After Plovdiv we headed north toward Romania, but along the way there’s some massive monuments which are worth hunting out.  The further north, the more extravagant.

The Shipka Pass is the only reasonably accessible route through the Balkan Mountains which cut Bulgaria in two.  The pass is practically a sacred site to Bulgarians, as it was here in 1877 that the Russian Army together with Bulgarian volunteer fighters succeeded in a battle against the Ottoman Army which proved decisive in securing Bulgarian independence after 400 years of Ottoman rule.

From the pass, 1,000 steps lead to the top of Mt Stoletov and the Freedom Monument, a 32 metre high memorial built in 1934 to honour the almost 7,000 Russian and Bulgarian soldiers who died in this epic battle. 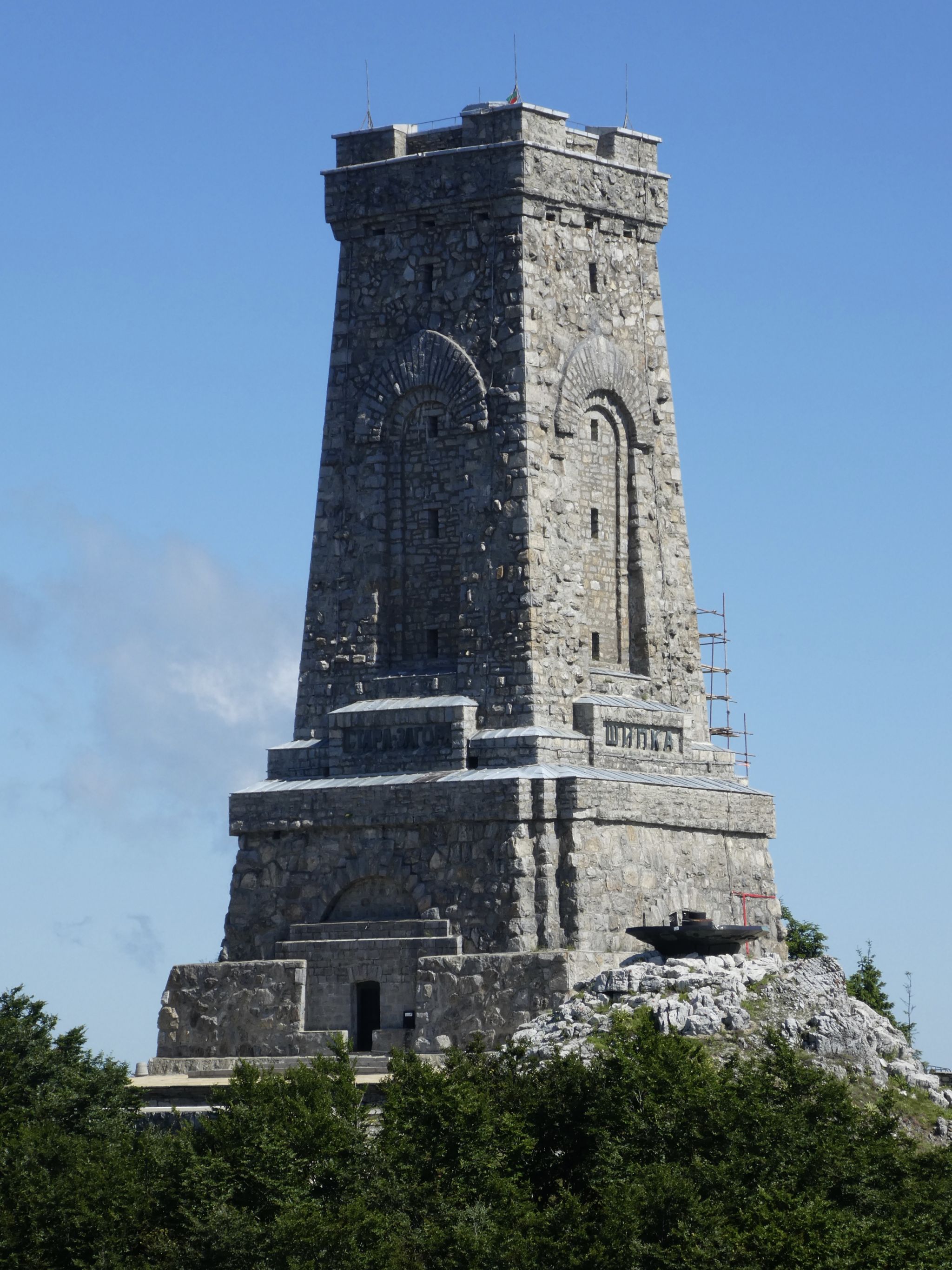 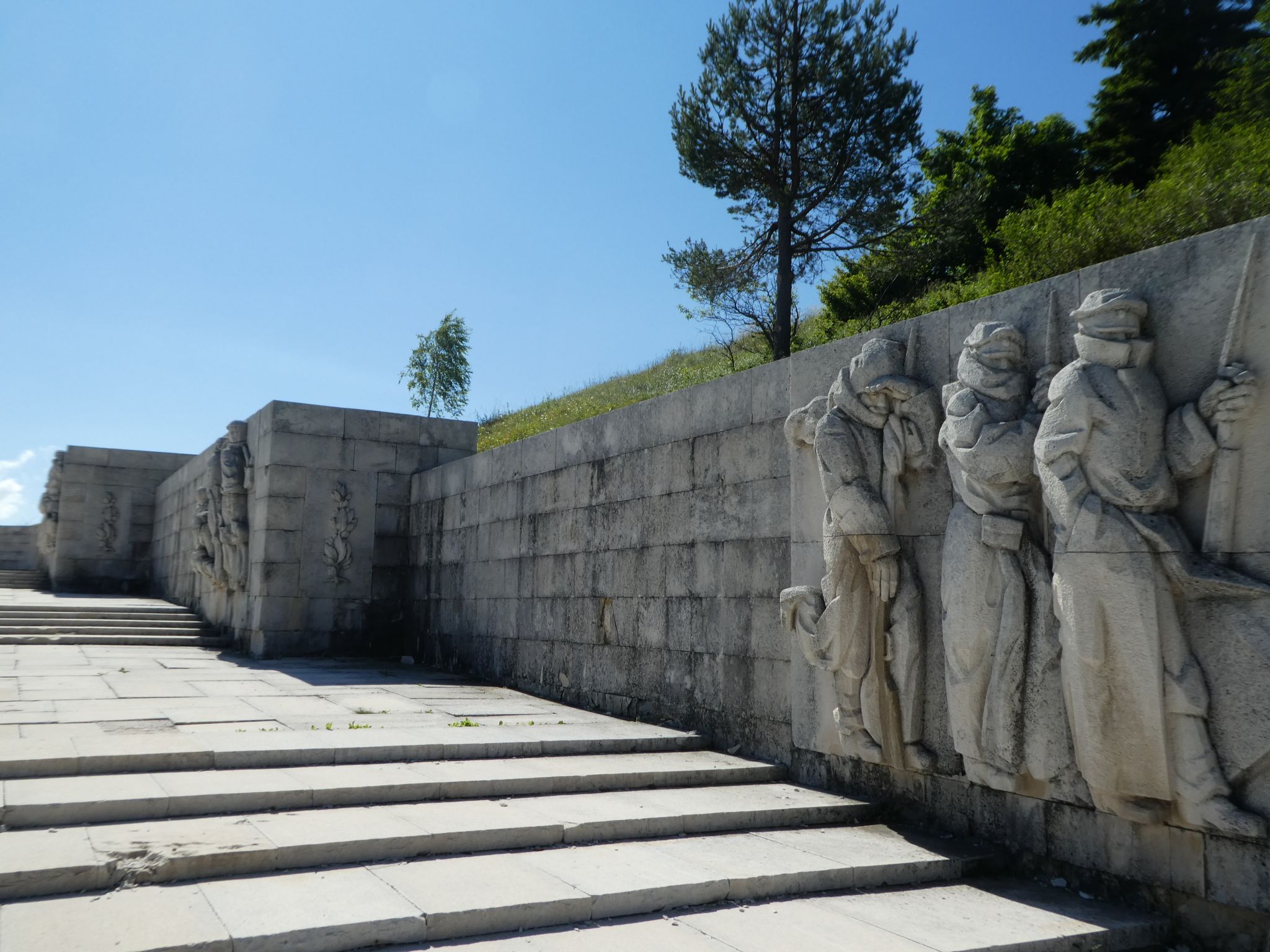 The Freedom Monument was a major undertaking for its time, but it pales in comparison to the Buzludzha Monument (formal name Monument House of the Bulgarian Communist Party) on nearby Buzludzha Peak.

This ‘citizen-funded’ extravaganza was built as ‘a tribute to the socialist movement in Bulgaria’.  Which really means: using various methods, including docking amounts from the wages of workers, the communist regime took somewhere between $US35 million and $US62 million which could have been spent improving the lives of ordinary Bulgarians and instead built a massive monument to itself.

Opened in 1981, the monument took 7 years, 70,000 tonnes of concrete and the work of 6,000 people.  The result?  Something that looks a lot like a massive concrete flying saucer.  In fact, now that criticising the government no longer results in lifetime imprisonment, it’s nicknamed the UFO. 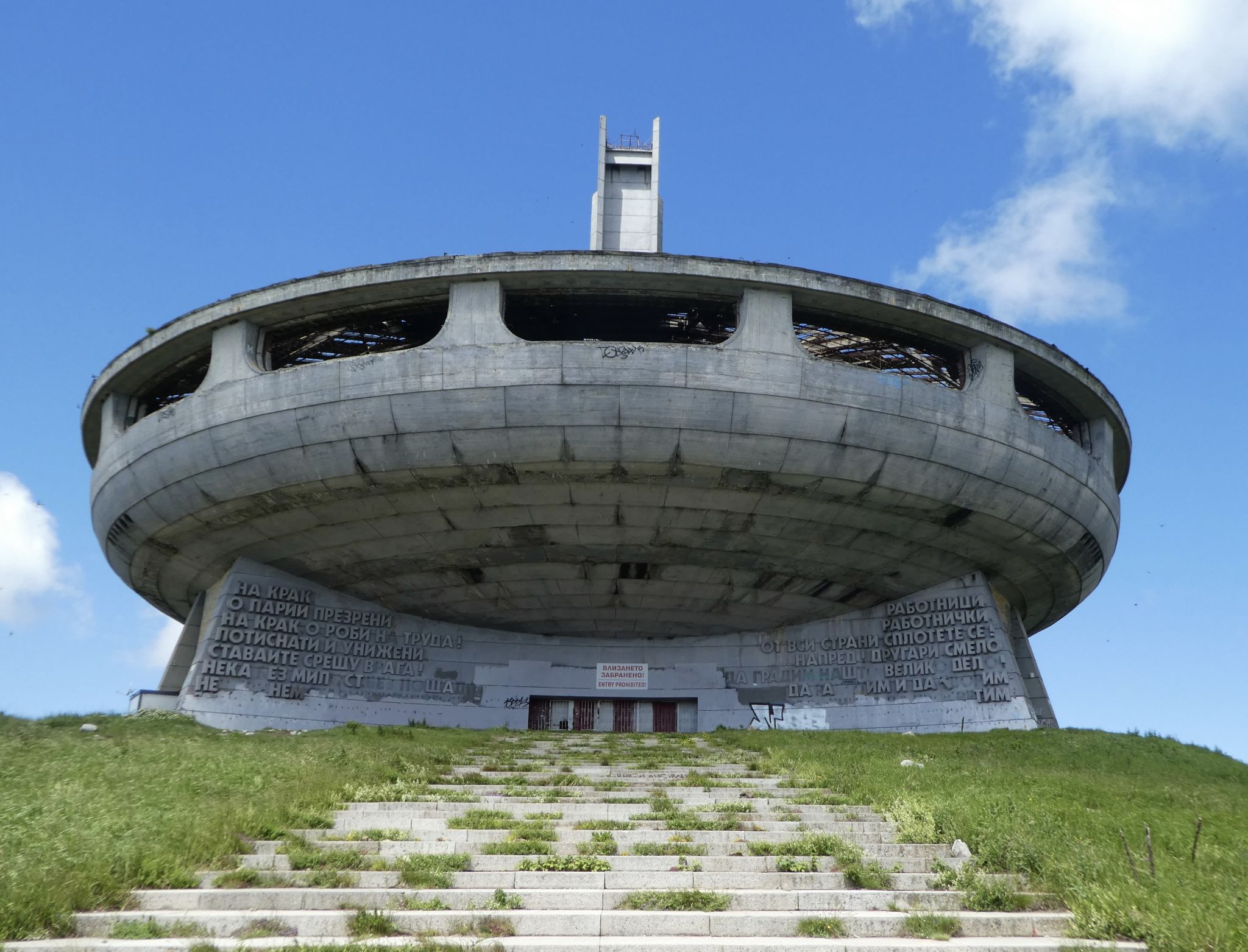 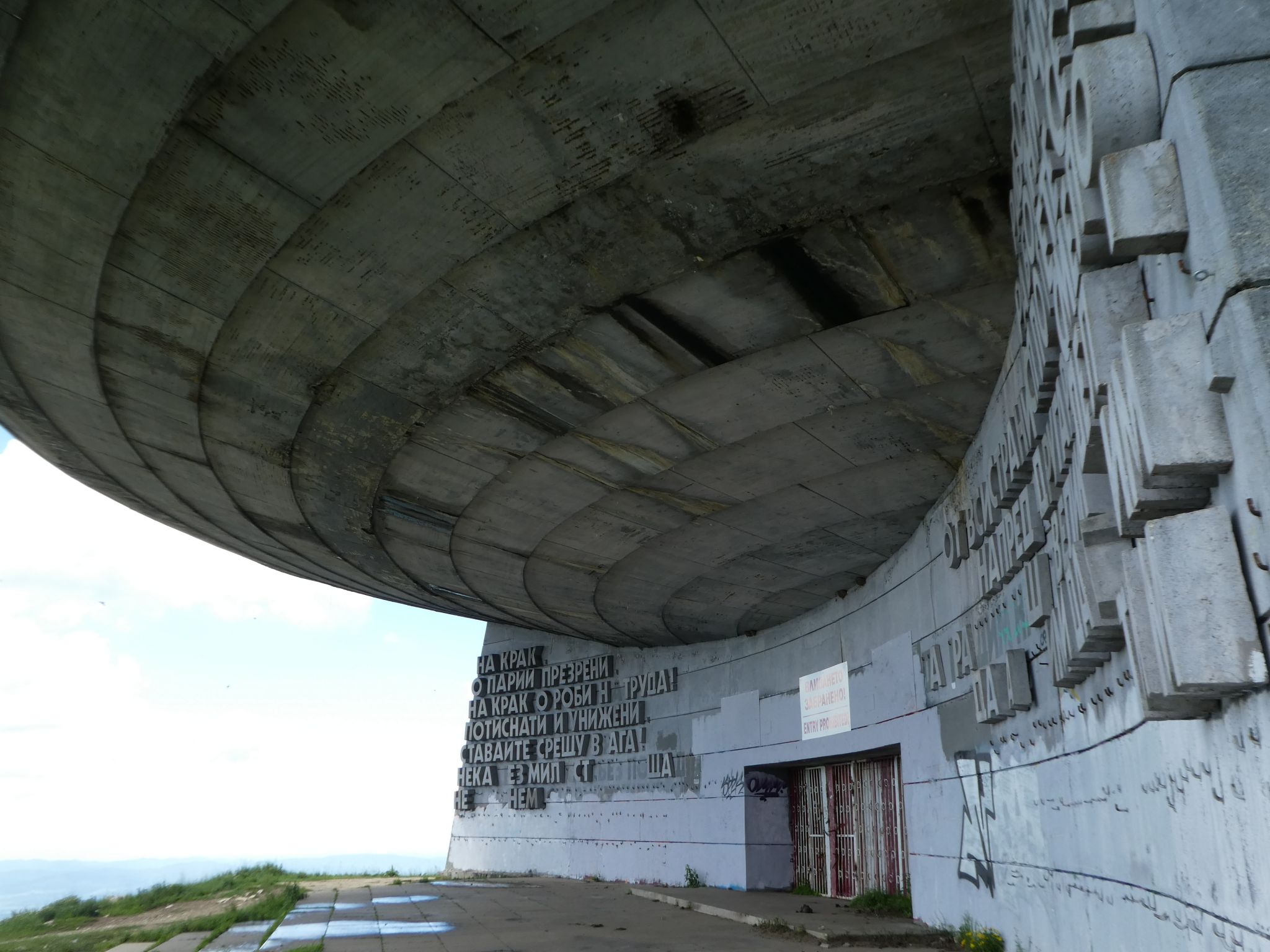 Inside, 510 square metres of mosaics requiring 35 tonnes of cobalt glass depicted an allegorical history of the Bulgarian Communist Party, including a mural of communist workers driving their pitchforks into a serpent symbolising capitalism.   Mosaics of the usual communist heroes – Marx, Engels, Lenin – adorned one wall.  The opposite wall featured Bulgarian ones, including the obviously modest then-leader Todor Zhivkov.  Zhivkov’s face was the first thing scratched out of the mosaics after the fall of communism in 1991 – by his own party, desperate to distance themselves from the dictator following his demise.

The monument includes a 70 metre tower next to the flying saucer with a massive 3.5 tonne star on each side made of synthetic ruby glass.  The stars were lit from the inside by spotlights powered by a generator large enough to run 500 homes.  It was said the stars could be seen from as far away as the Romanian border to the north and the Greek border to the south. 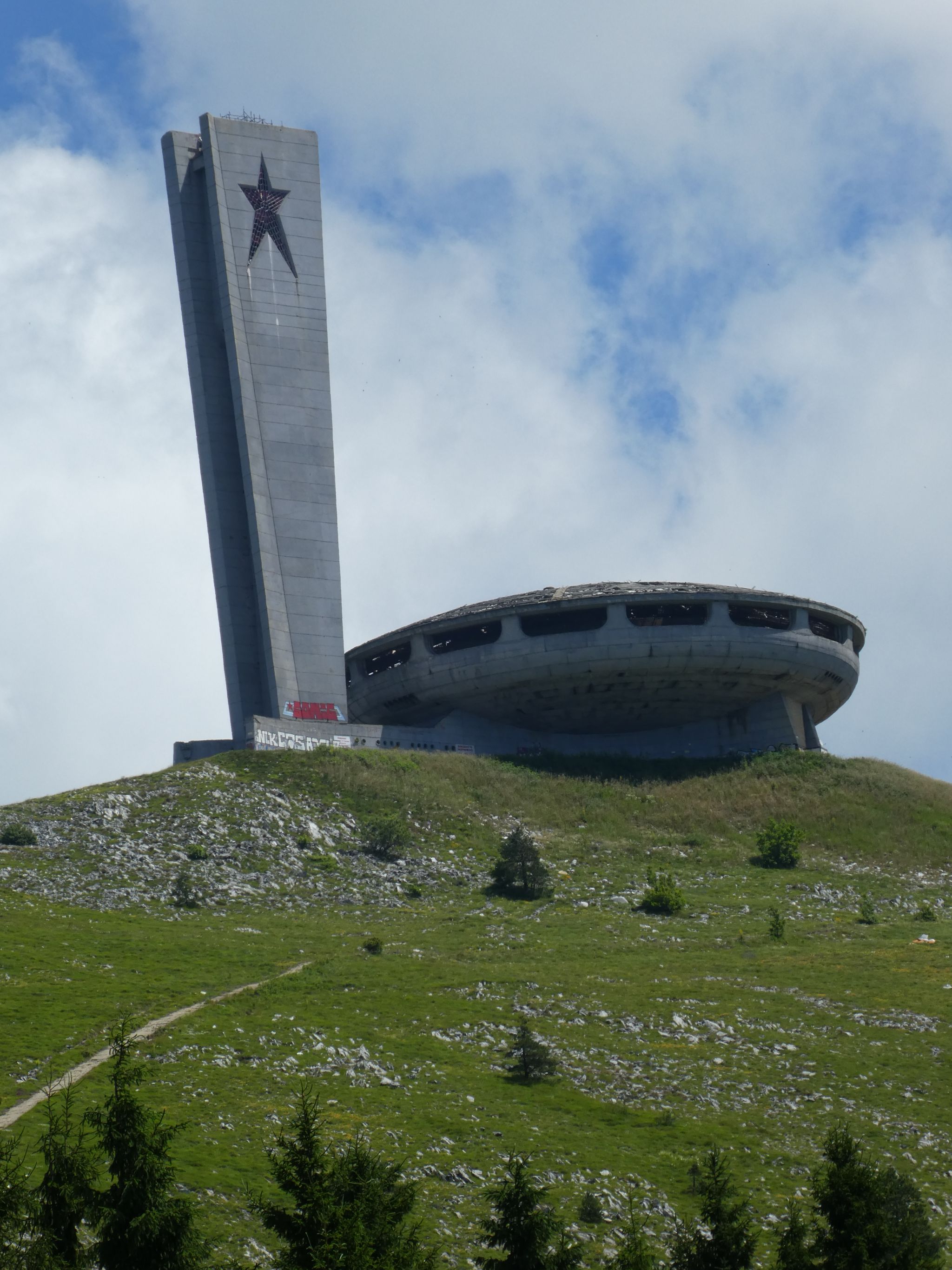 With the fall of communism, the Buzludzha Monument was closed but remained guarded.  In 1999, however, the guards were dismissed and before long the monument was looted.  Everything of value from inside was stripped.  There were rumours the red stars were made of real rubies, so locals tried to shoot them out.  What they got for their efforts was a shower of shattered glass.

It used to be possible (although illegal) to climb inside, but there is now again a permanent guard, CCTV has been installed, and previous access holes have been barred.  Peering inside, the mess of rusting metal and trip hazards and the risk of falling debris mean only a fool would wish to enter.

Much more sensible to visit the very beautiful Bulgarian Orthodox Nativity Memorial Church down in Shipka village.  The village isn’t even big enough to have an ATM, but the church is as ornate as any big city basilica, with five golden domes and a 53 metre bell tower with 17 bells which can be heard several kilometres away. 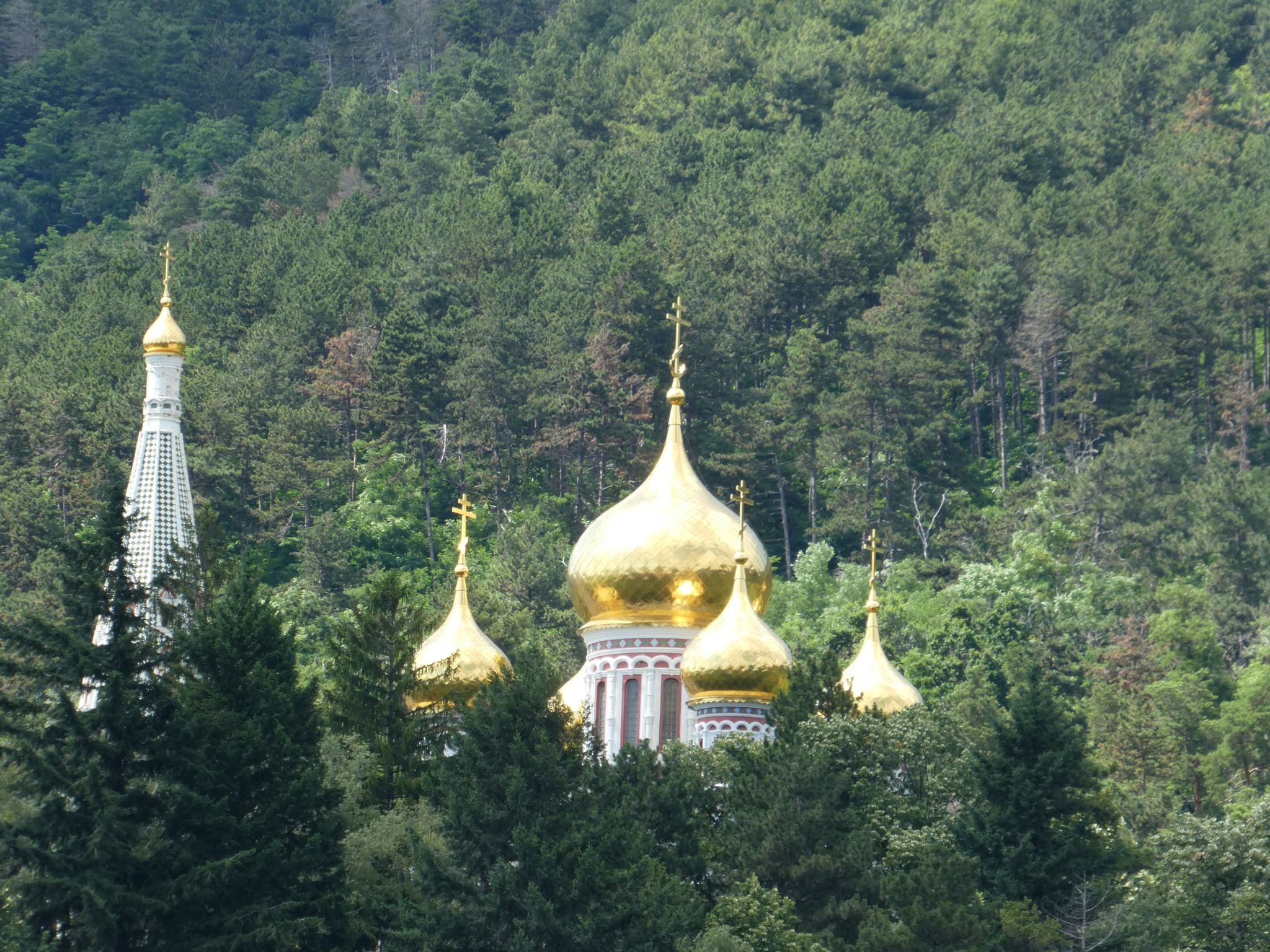 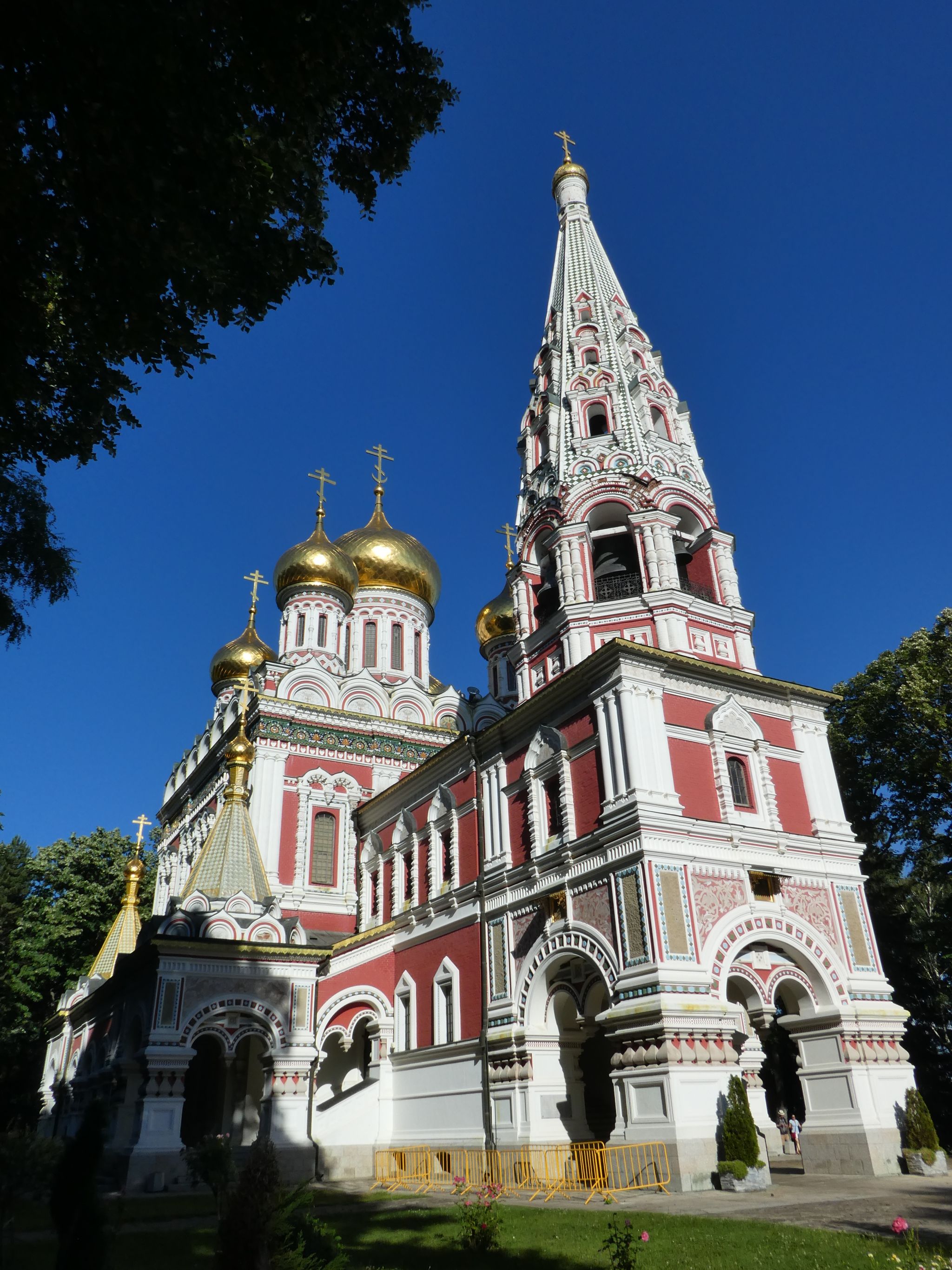 Between the light from the Buzludzha stars and the bells from the church, did anyone in Shipka get any sleep in the 80s??

From Shipka we headed north to Veliko Tărnovo, the capital of Bulgaria before the Ottomans took over.  It’s popular with local tourists for the partially restored Tsarevets Fortress, home to 22 successive kings of Bulgaria in medieval times.  But its most notable monument is the Asenevtsi Monument, built in 1985 to celebrate the 800th anniversary of the uprising that led to the establishment of the Second Bulgarian Empire.

Flanked by four horsemen, the central column is either a representation of a disproportionately large sword or a cleverly disguised missile launch site.  You decide. 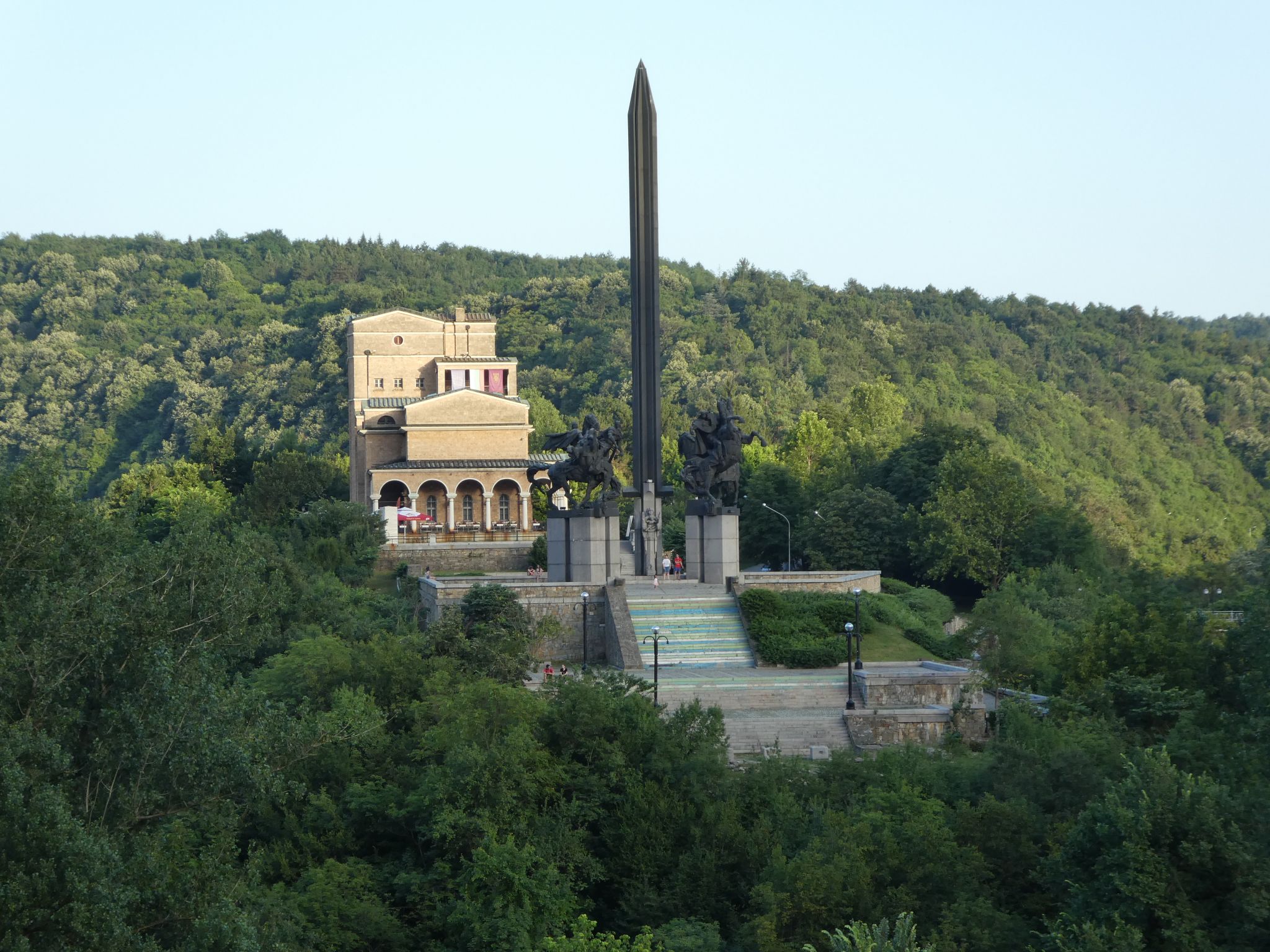 And last but not least, the Monument to the Founders of the Bulgarian State.  It’s also called the Monument to 1,300 Years of Bulgaria – which seems to gloss over the 400 years when it wasn’t a sovereign state at all.

Like Buzludzha, it was completed in 1981.  Good times for Bulgarian concrete manufacturers.  Requiring 50,000 cubic metres of concrete and 2,500 tonnes of steel, the monument comprises 18 metre high futuristic statues of the Bulgarian khans who ruled during the First Bulgarian Empire.

At least, that’s what the statues are said to depict.  We thought they looked more like Transformers. 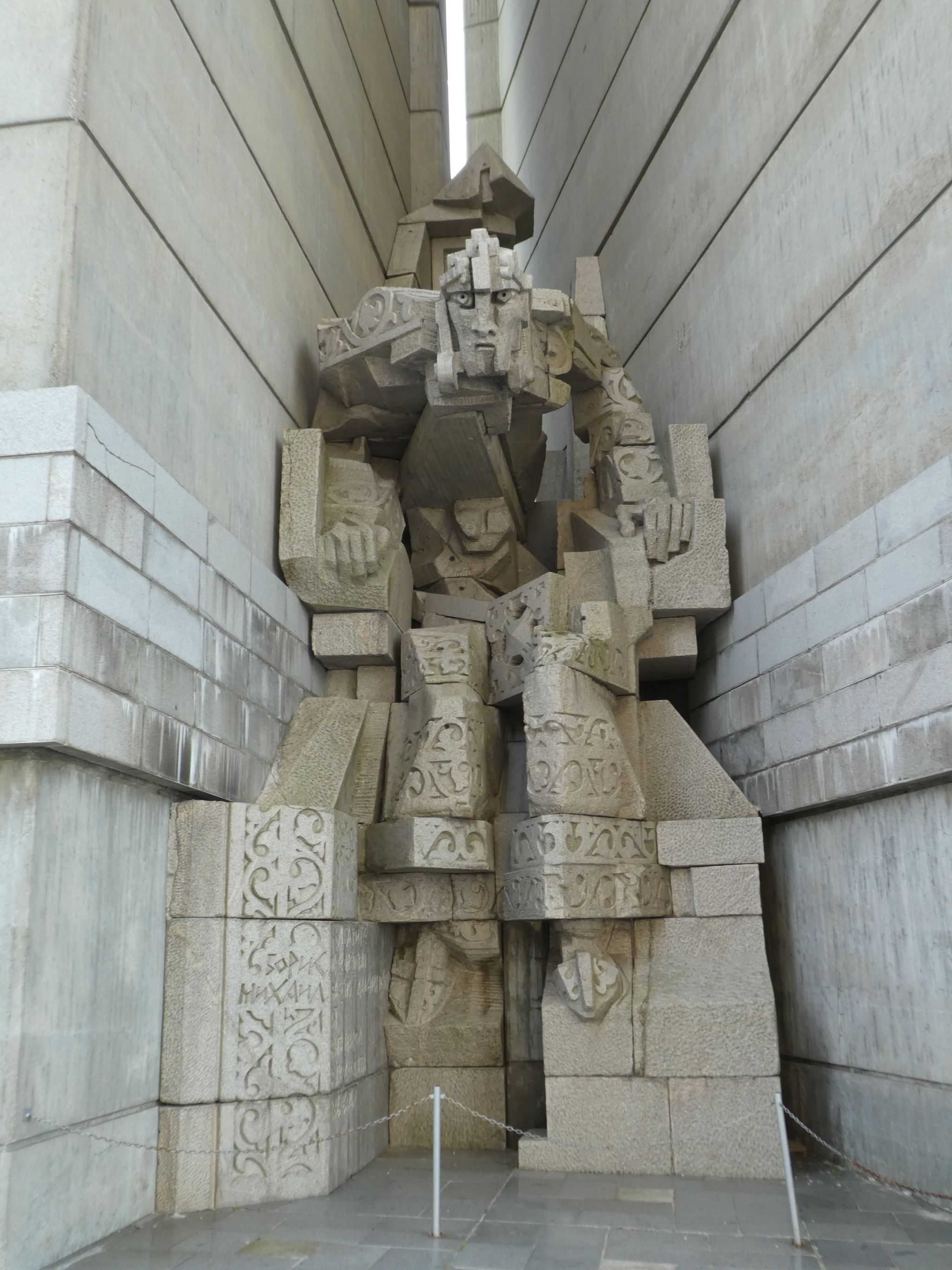 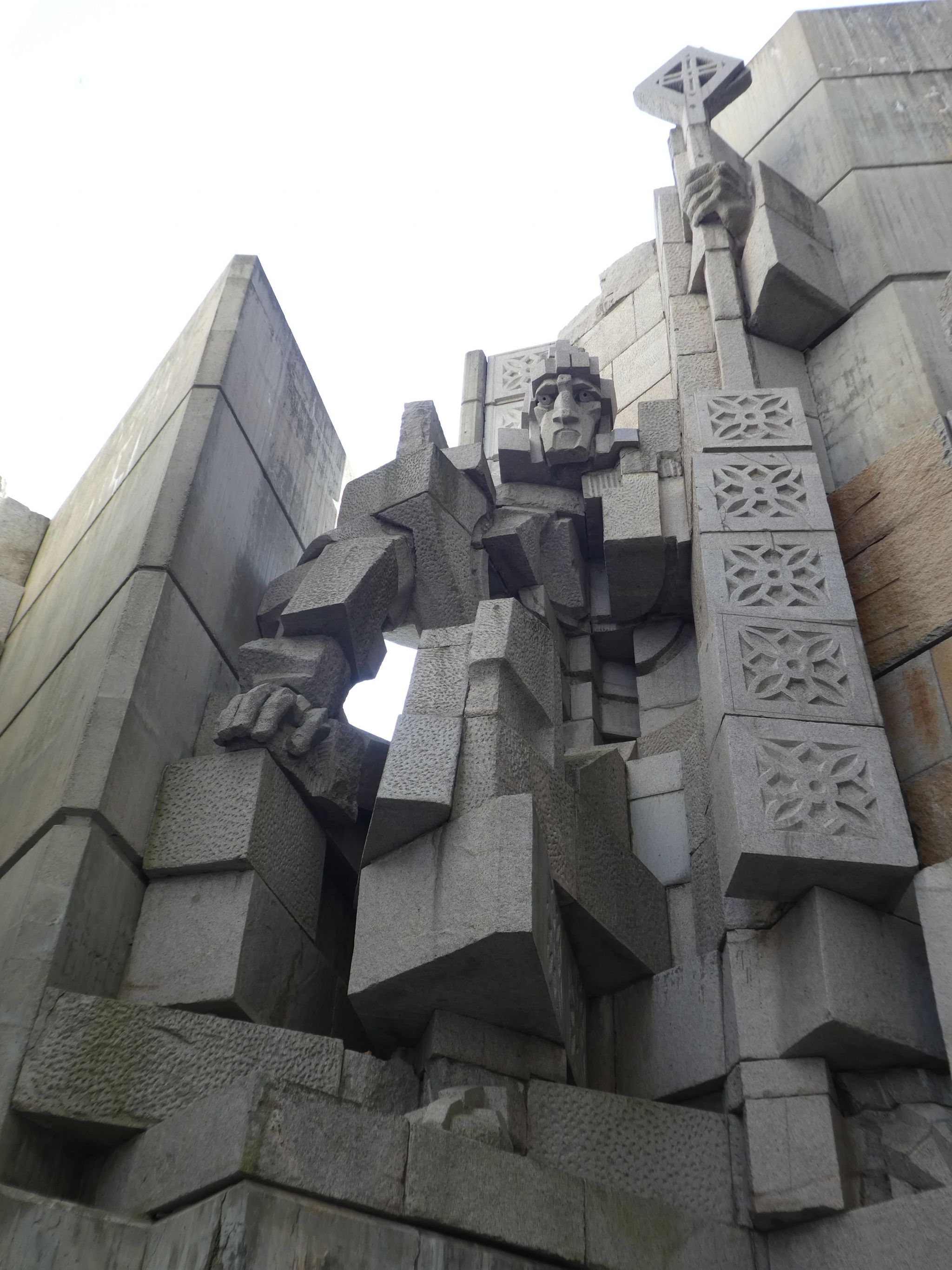 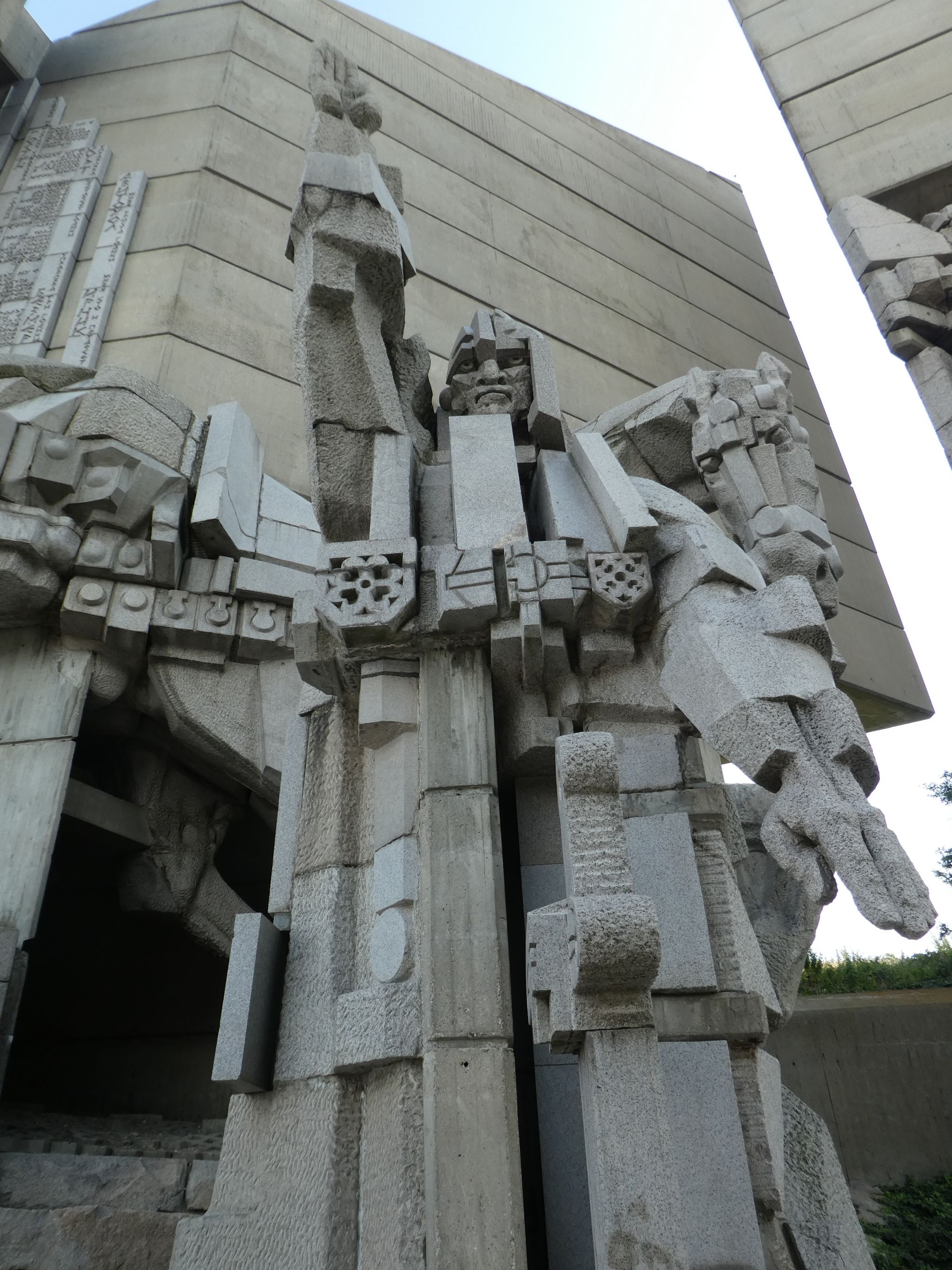 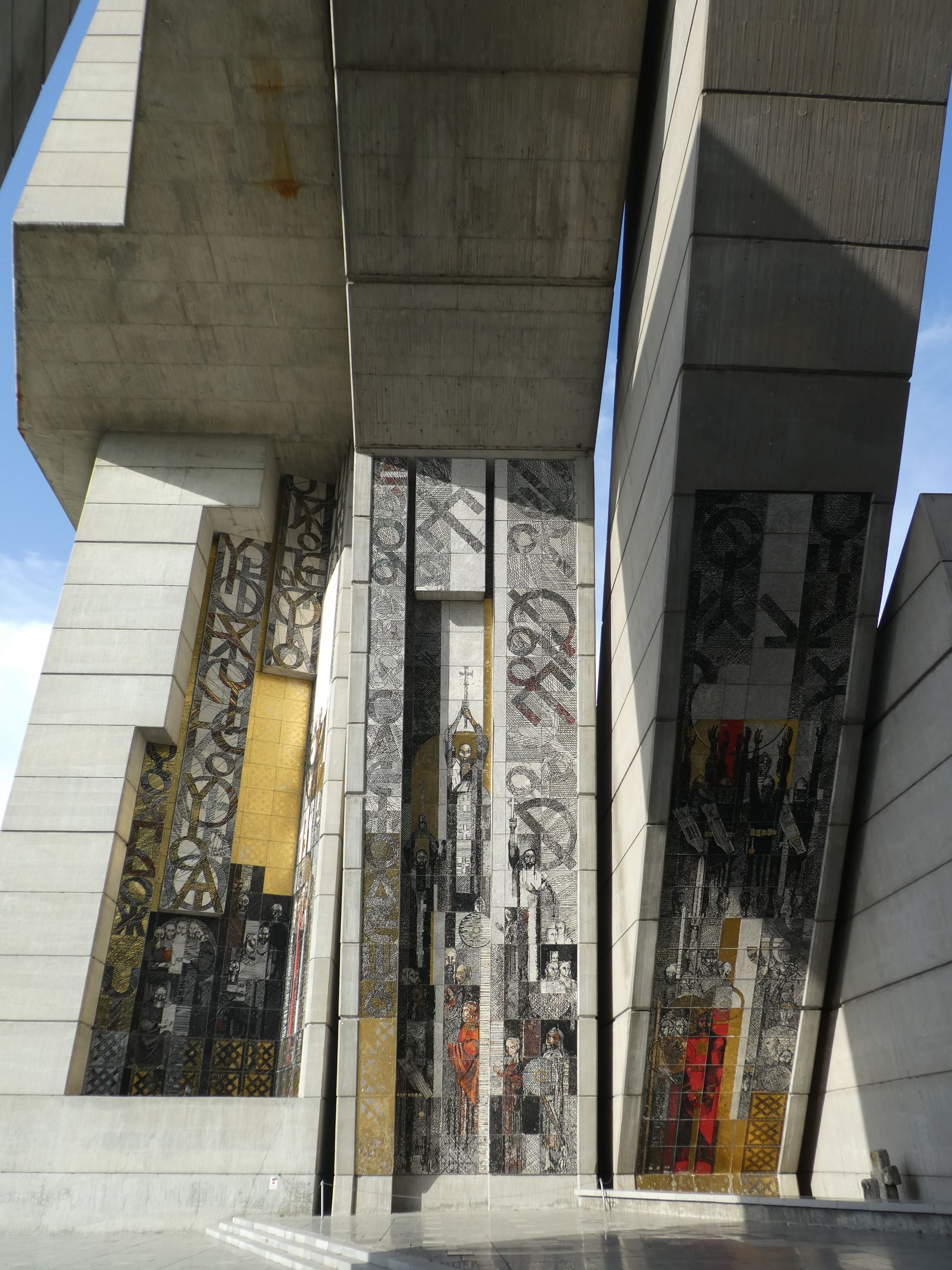 On top of the monument is an enormous granite lion weighing 1,000 tonnes. 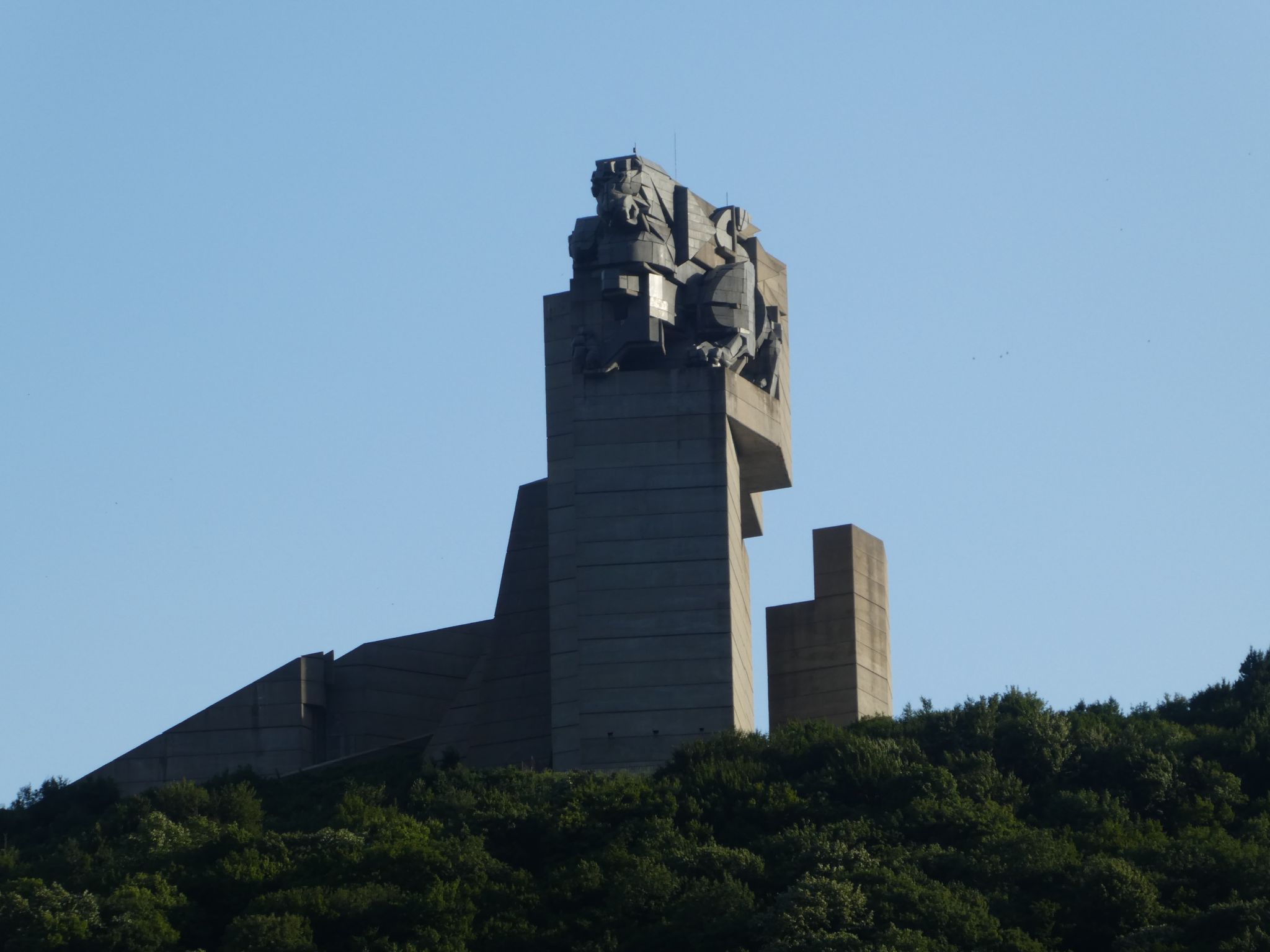 The monument is so big it can be seen from 30kms away.  For some idea of its size, look carefully in the shadow on the steps.  The black and white dot is a person. 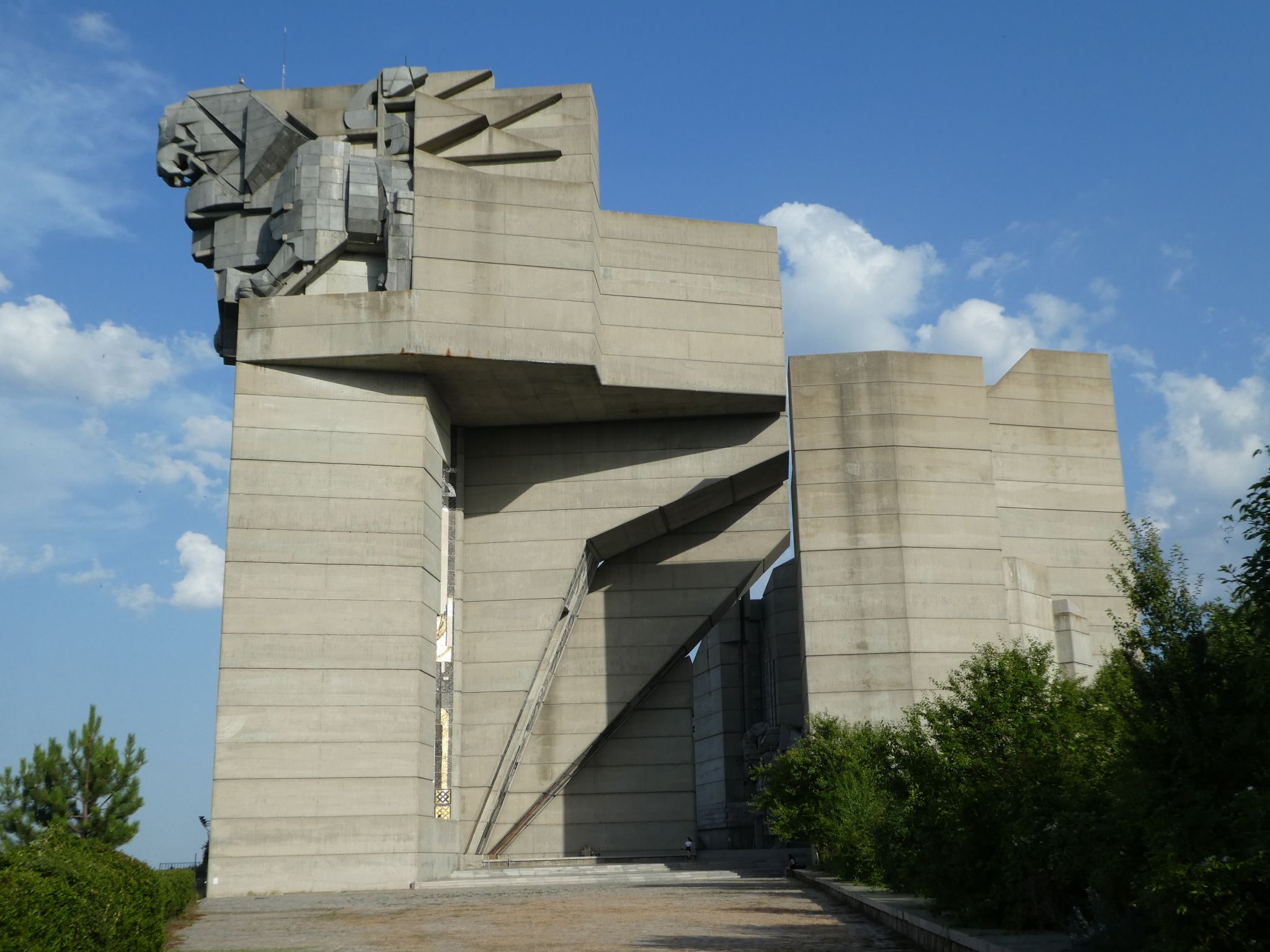 That completed our tour of absurdly large concrete monuments, and we headed north to Romania and the castles of Transylvania.