From Shumen in northern Bulgaria we took a bus to Bucharest and a train north to start our travels in Romania.

Romania’s first king, Carol I, built a summer palace here in the late 1800s, and this neo-Renaissance creation is one of the most attractive palaces in Romania. 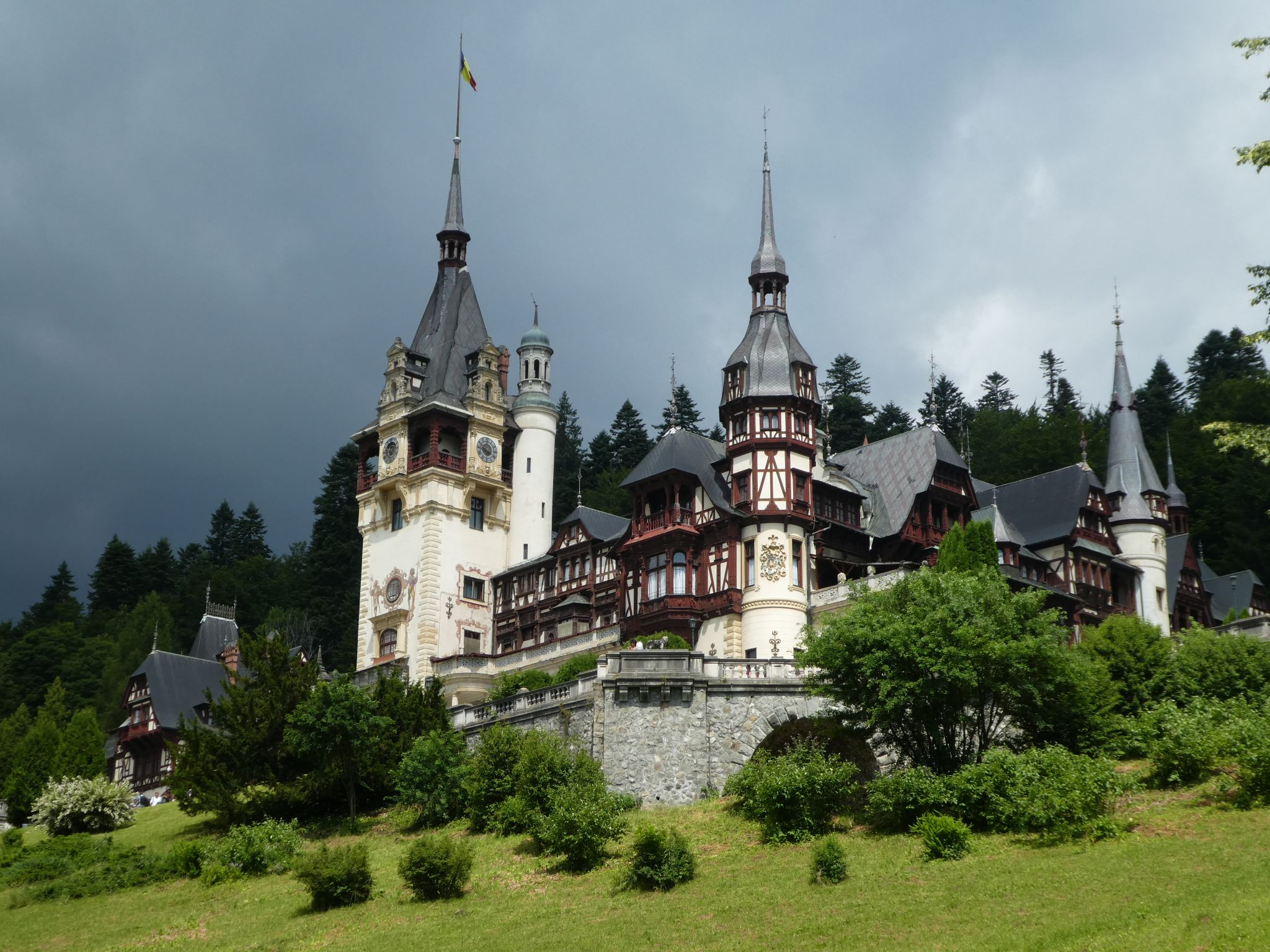 To see inside Peles Castle you must join a guided group.   It’s mostly dark wood and intricate carving.  The cracking commentary from the guide was peppered with jokes delivered in a Dalek-like monotone such as ‘this room has a secret passageway to the king’s bedroom.  I can’t show it to you because it’s secret’. 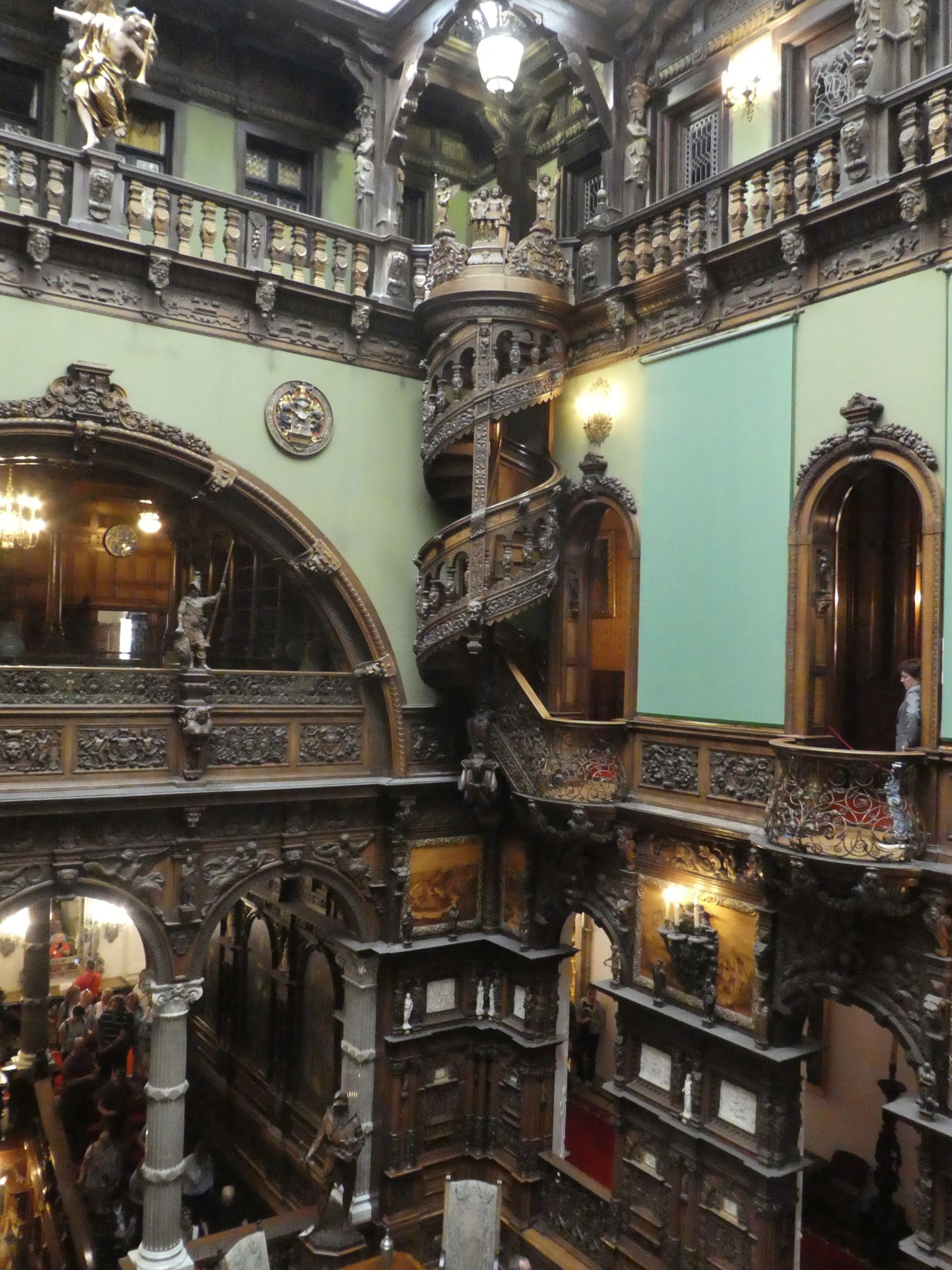 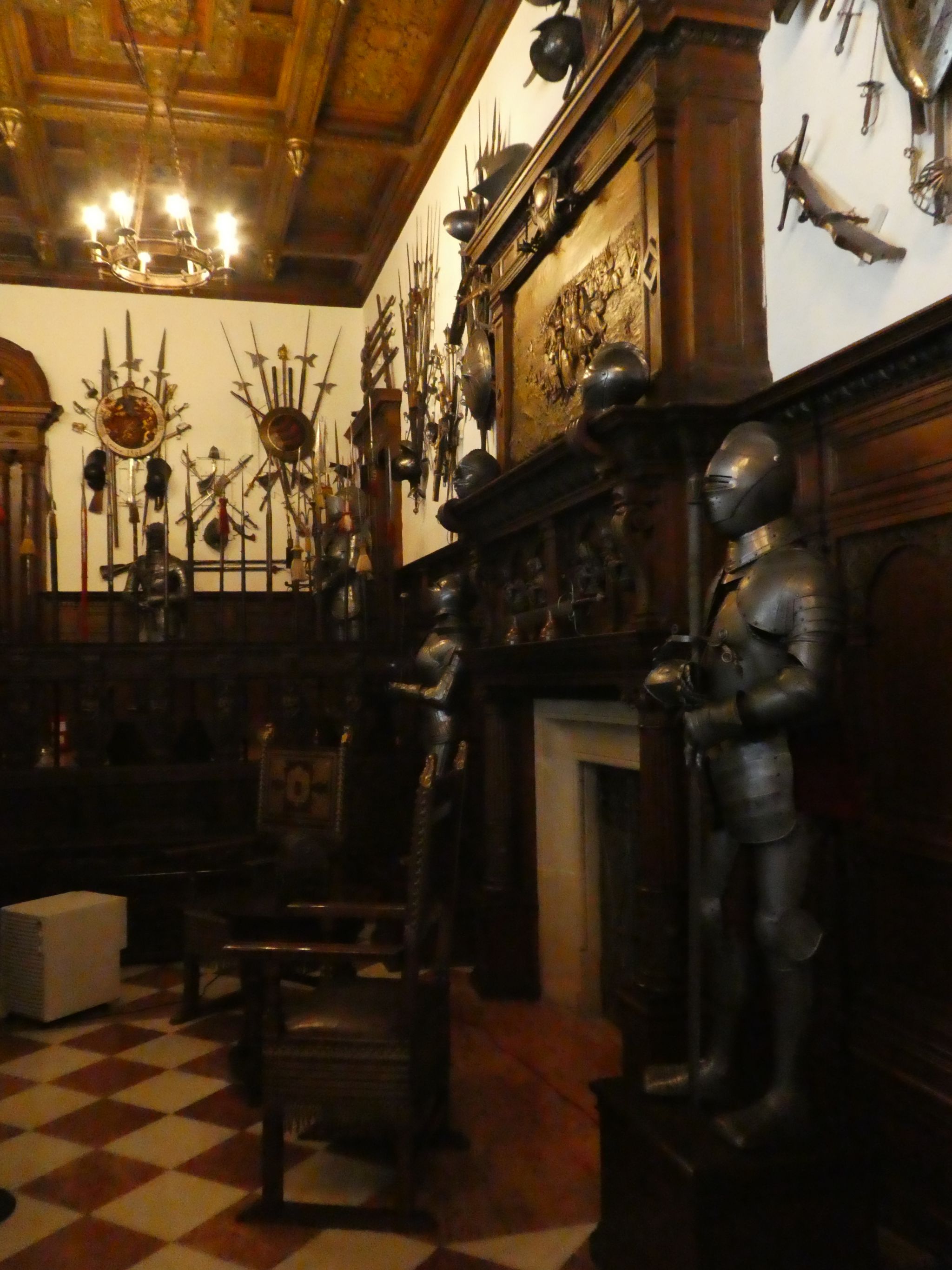 King Carol I was childless, so he adopted his nephew Ferdinand, who succeeded him on the throne.  Lavish as Peles Castle was, it seems Ferdinand needed some space of his own, so art nouveau Pelisor Palace was built just 100 metres down the road.   The 19th century royal equivalent of converting the garage into a bedroom for the teenager. 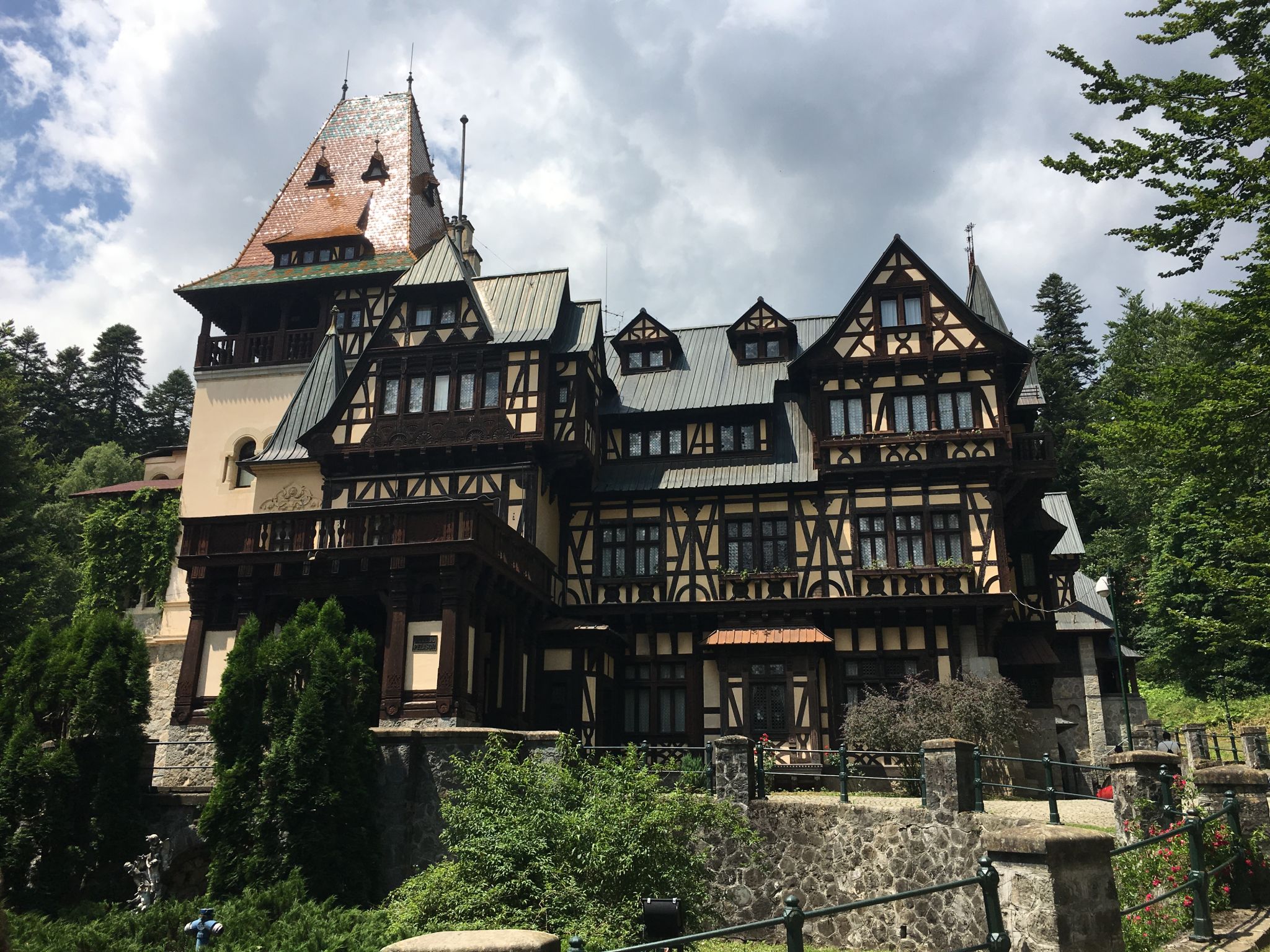 Sinaia sits in a valley surrounded by the towering Bucegi Mountains.  It has the feel of a once-wealthy ski town retreat and has many gorgeous 19th century houses.  Some are perfectly maintained, others not so much.  This one looked like a candidate for ‘Grand Designs Romania’. 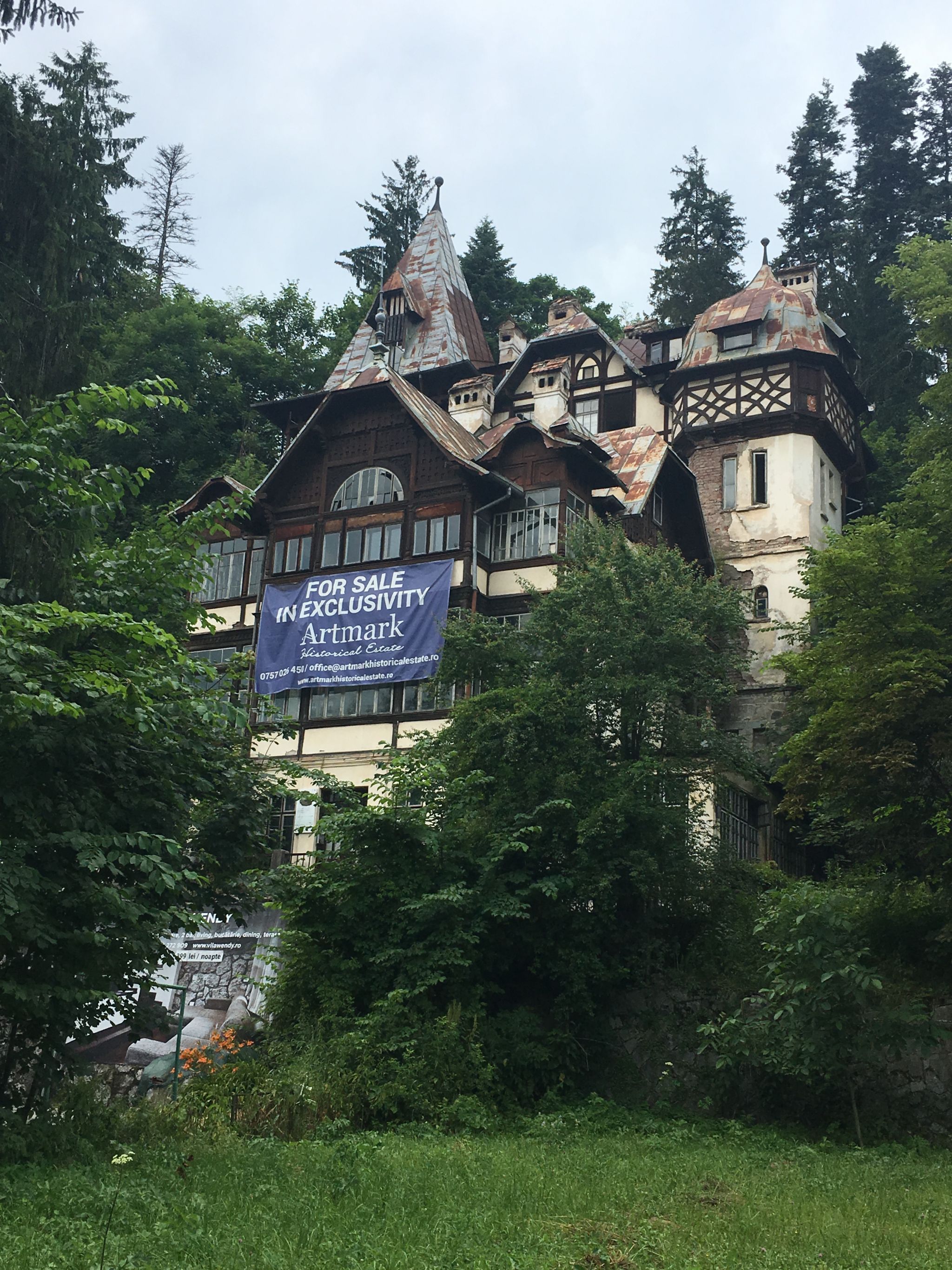 ‘Never let the truth get in the way of a good commercial opportunity’.  If that’s not Bran’s town motto, it should be.   An entire industry has grown up in Bran based on relentless promotion of it’s castle as ‘the home of Dracula’ in Bram Stoker’s 1897 gothic horror novel of the same name. 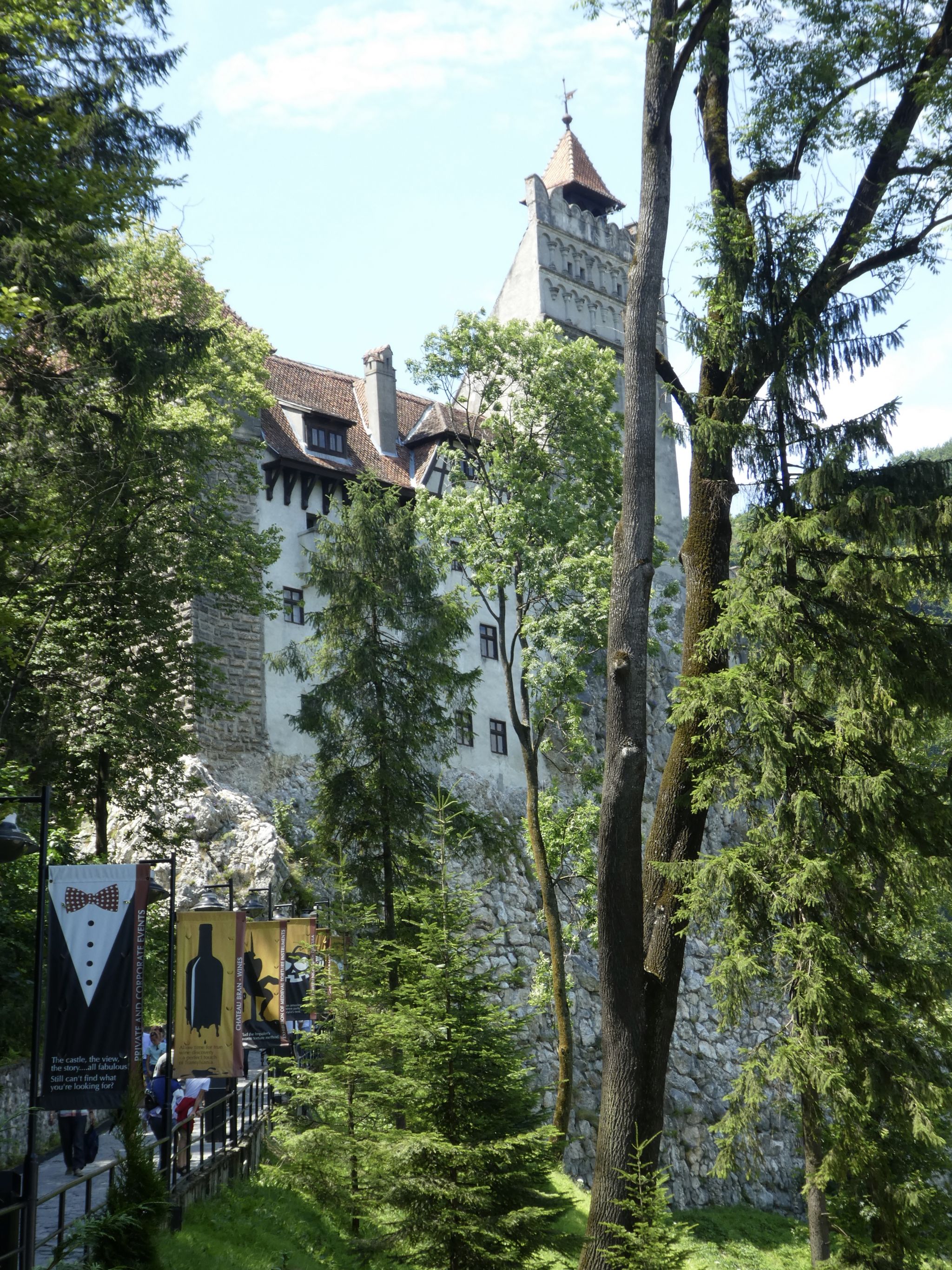 Bran’s claimed connection is that (a) the character of Count Dracula is based on local medieval tyrant, Vlad Tepes, and (b) the castle in the novel is based on Bran Castle.

But, as in the novel, all is not as it seems.

First, the character of Count Dracula.  Vlad Tepes was a prince and ruler of Wallachia, the province next to Transylvania, in the 1400s.  He gained a reputation for cruelty, and the sobriquet Vlad the Impaler, for his habit of slaughtering his enemies and mounting their heads on sticks.  He was also known as Vlad Dracul, a Slavic language short-form of a title, Order of the Dragon, which he held.

So the name Dracula may have come to Stoker via knowledge of Vlad Tepes, but that’s about where it ends.  Vlad wasn’t a Count.  Bloodthirsty and cruel as he was, it has never been suggested he drank the blood of his victims.  In the many portraits of him that exist, he doesn’t have pointy teeth or deathly pale skin.  He didn’t shun sunlight and so far we know, he didn’t have any trouble seeing his reflection in the mirror.  And even if it were otherwise, Vlad was from Wallachia, not Transylvania.  He passed through Transylvania while terrorising the merchants of nearby Brasov, but never lived, or even stayed, at Bran Castle.

As for the castle, the only description in the novel is that “the castle is on the very edge of a terrible precipice. A stone falling from the window would fall a thousand feet without touching anything! As far as the eye can reach is a sea of green tree tops, with occasionally a deep rift where there is a chasm. Here and there are silver threads where the rivers wind in deep gorges through the forests”.

Stoker never went to Transylvania but it is claimed that Bran is the only Transylvanian castle that matches the novel’s description, and that Stoker saw pictures of it in a book in a London library.  Really??  Check out Instagram, folks.  How many castles around the world are built on the edge of a precipice?  What’s to say he wasn’t thinking of another castle and transposed it to Transylvania?  Or that it wasn’t any particular castle but a common image of one?

The flimsiness of the connection doesn’t deter the more than half a million visitors who flock to Bran each year to visit the castle and engage in all sorts of tacky vampire-themed activities in the village. 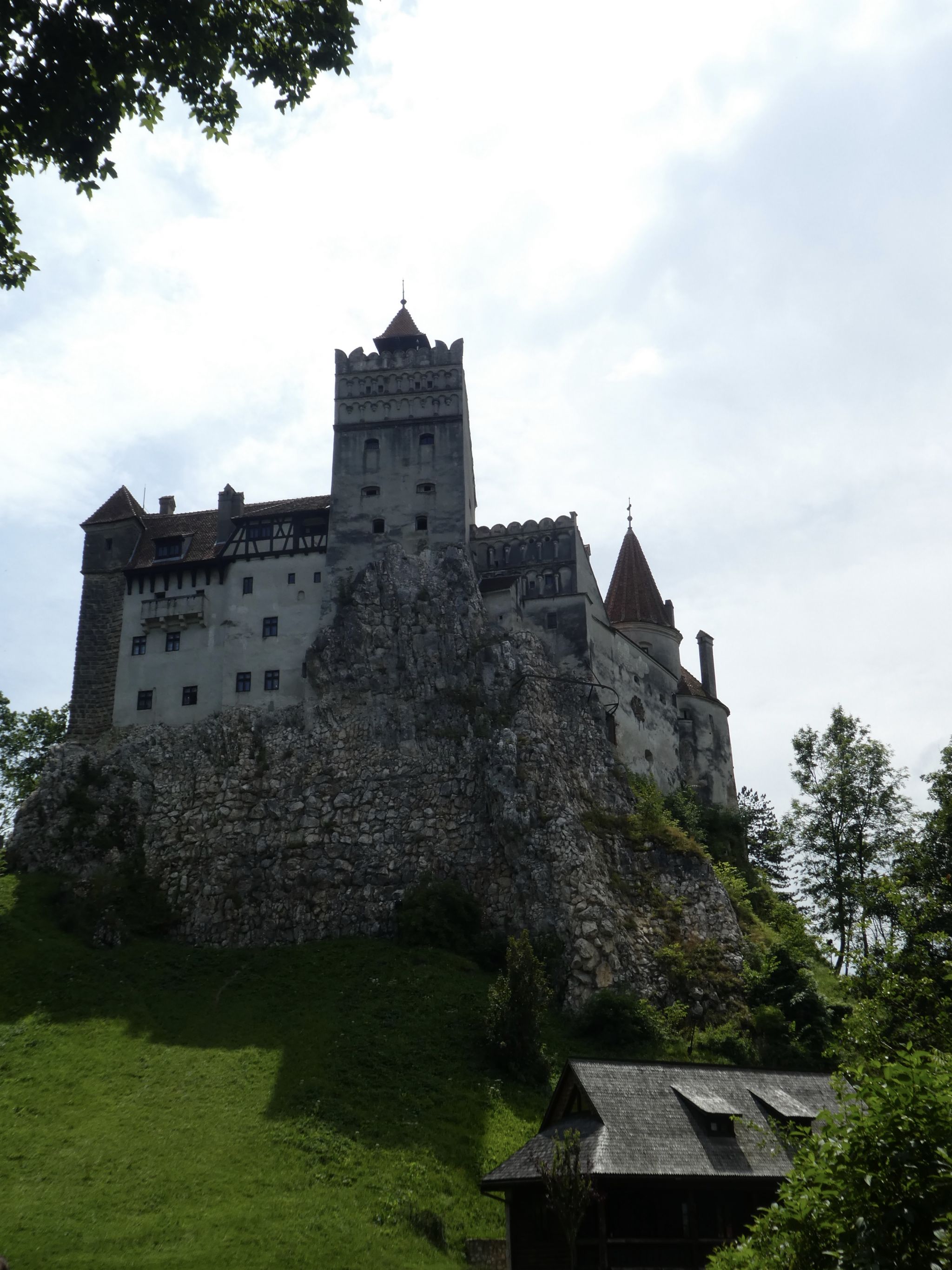 Hand on heart, apart from it’s dramatic position, the castle is really not that special.  And maybe that’s the point – there’s tough competition for the tourist dollar, and if you can’t seduce the masses with beauty, reel them in with a good story.

Brasov was first established by Teutonic Knights in the early 1200s, and grew into an important German trading town by the 1400s where the Saxons built high class churches and townhouses within a walled city.

Romania’s largest gothic church dominates one end of the walled Old Town.  Built between 1385 and 1477, it became known as the Black Church due to its charred colour following the town’s Great Fire in 1689.  Repairs took 100 years.  Another 250 years have passed since the restoration was completed, and the church is no longer black, but the name has endured. 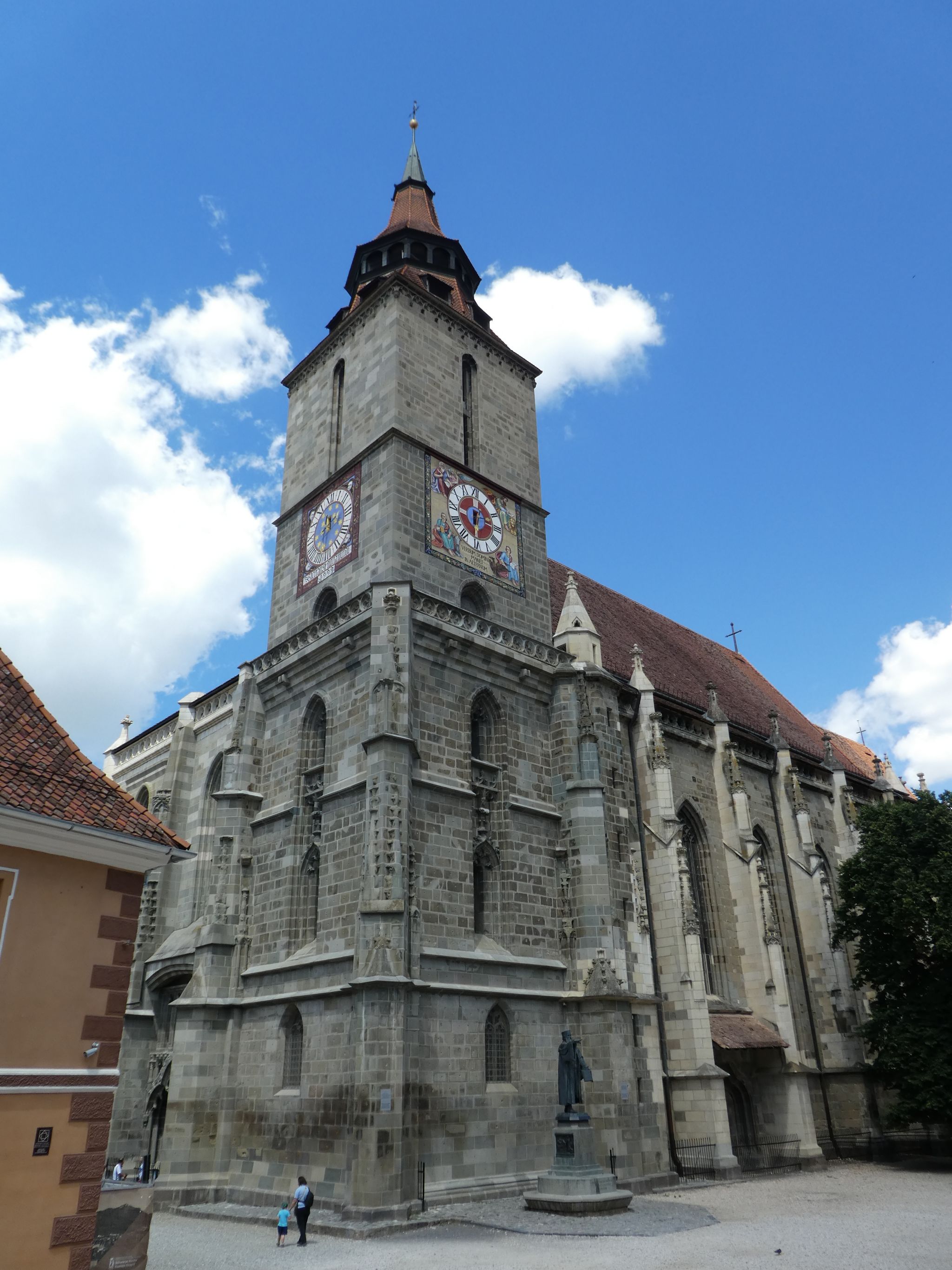 The Black Church faces Piata Sfatului, the town square, now surrounded by impeccably restored building fronts and a ring of bars and restaurants.  There’s a funicular and a ‘Brasov’ sign reminiscent of LA’s Hollywood sign. 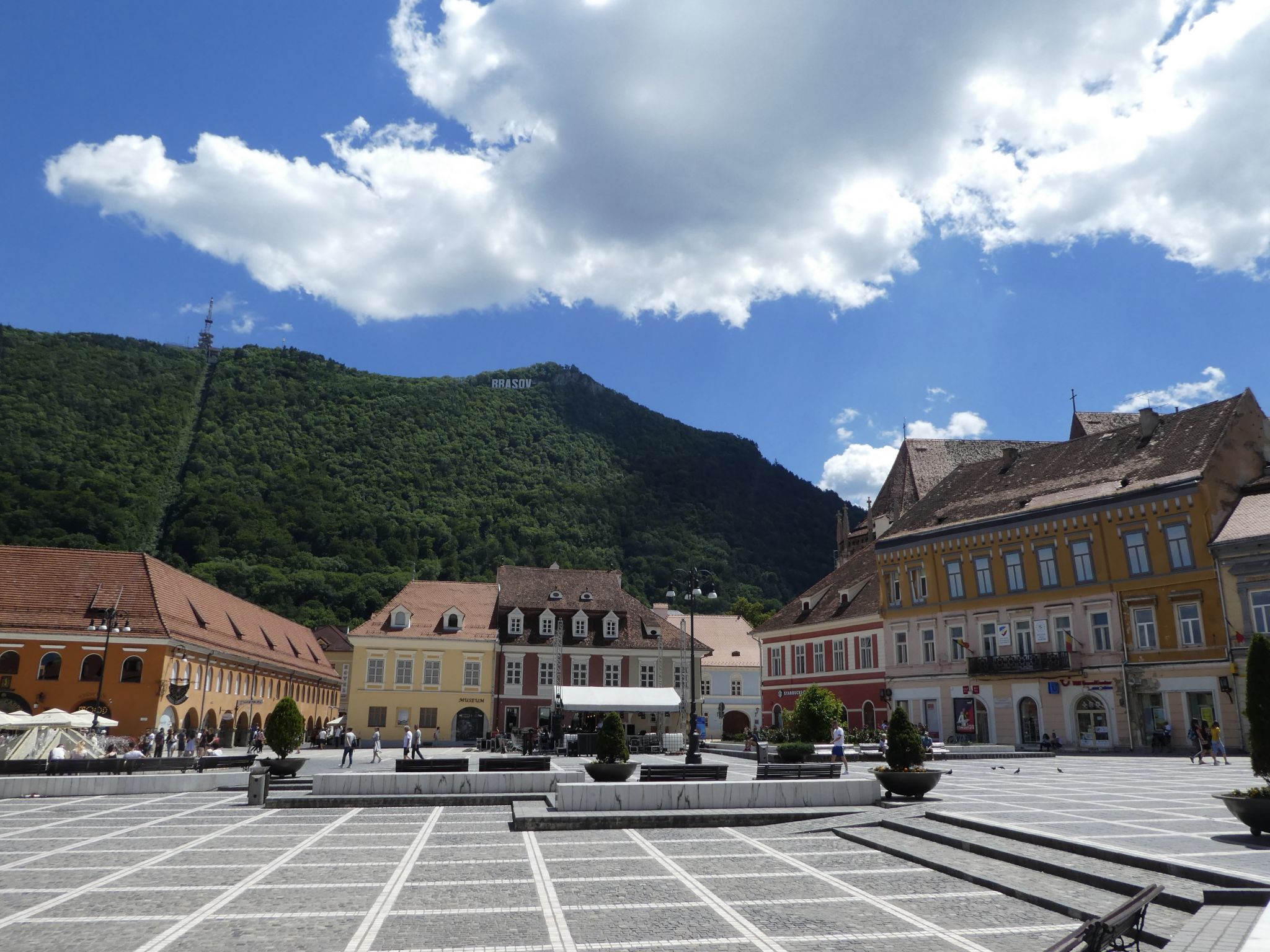 The Beth Israel Synagogue dates to 1901.  In 1940 it had a congregation of 4,000, but persecution, the Holocaust and migration to Israel following WWII mean it now has just 230 members.  The synagogue has been meticulously maintained and there is a memorial to the 150,000 Transylvanian Jews, including 240 from Brasov, who were transported to Auschwitz. 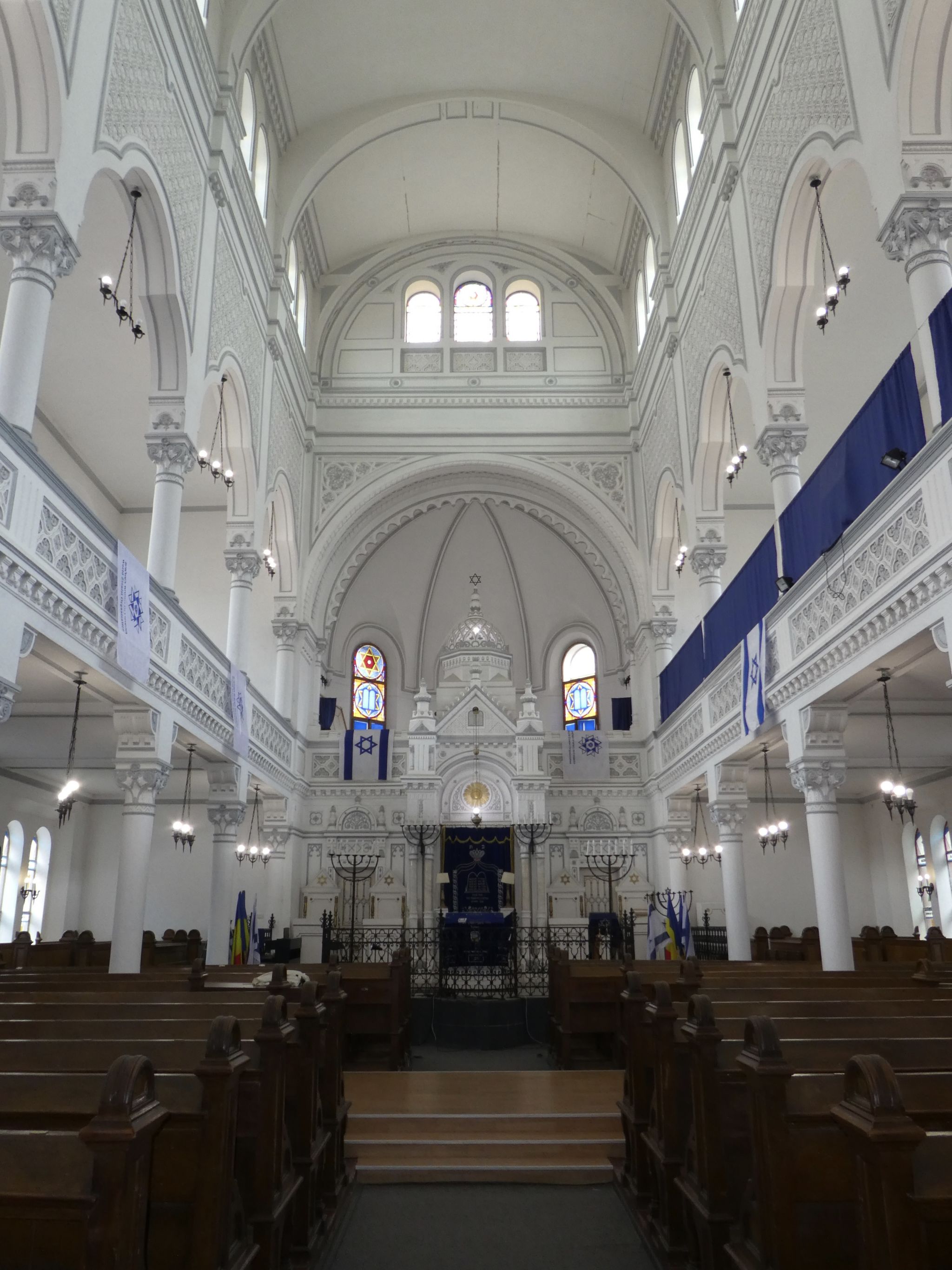 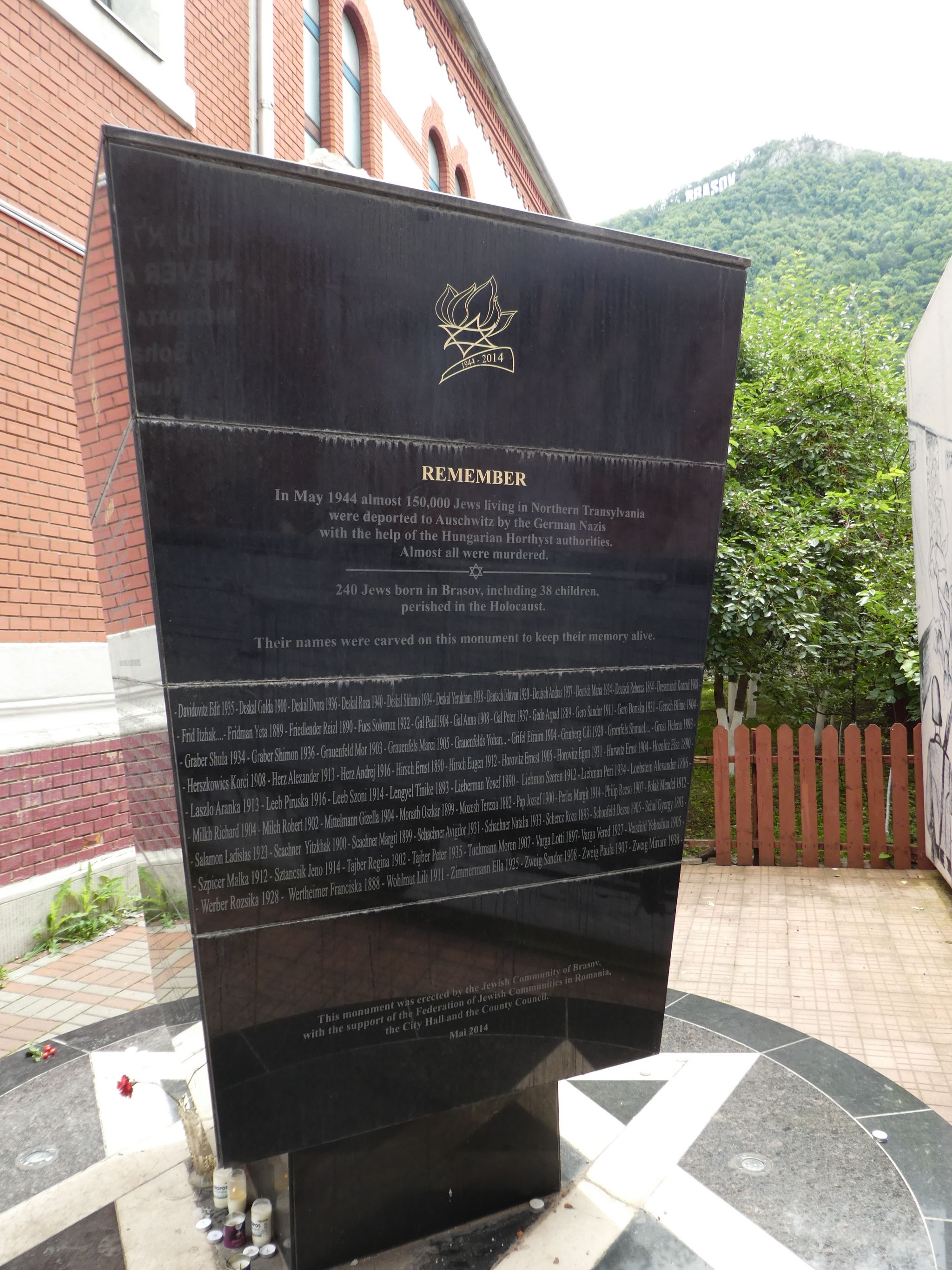 The old city walls also have been restored.  The original walls were 12 metres high and more than 3 km long.  In Saxon times, ethnic Romanians were banned from entering, consigned to a settlement accessed via the Schei Gate which still stands today. 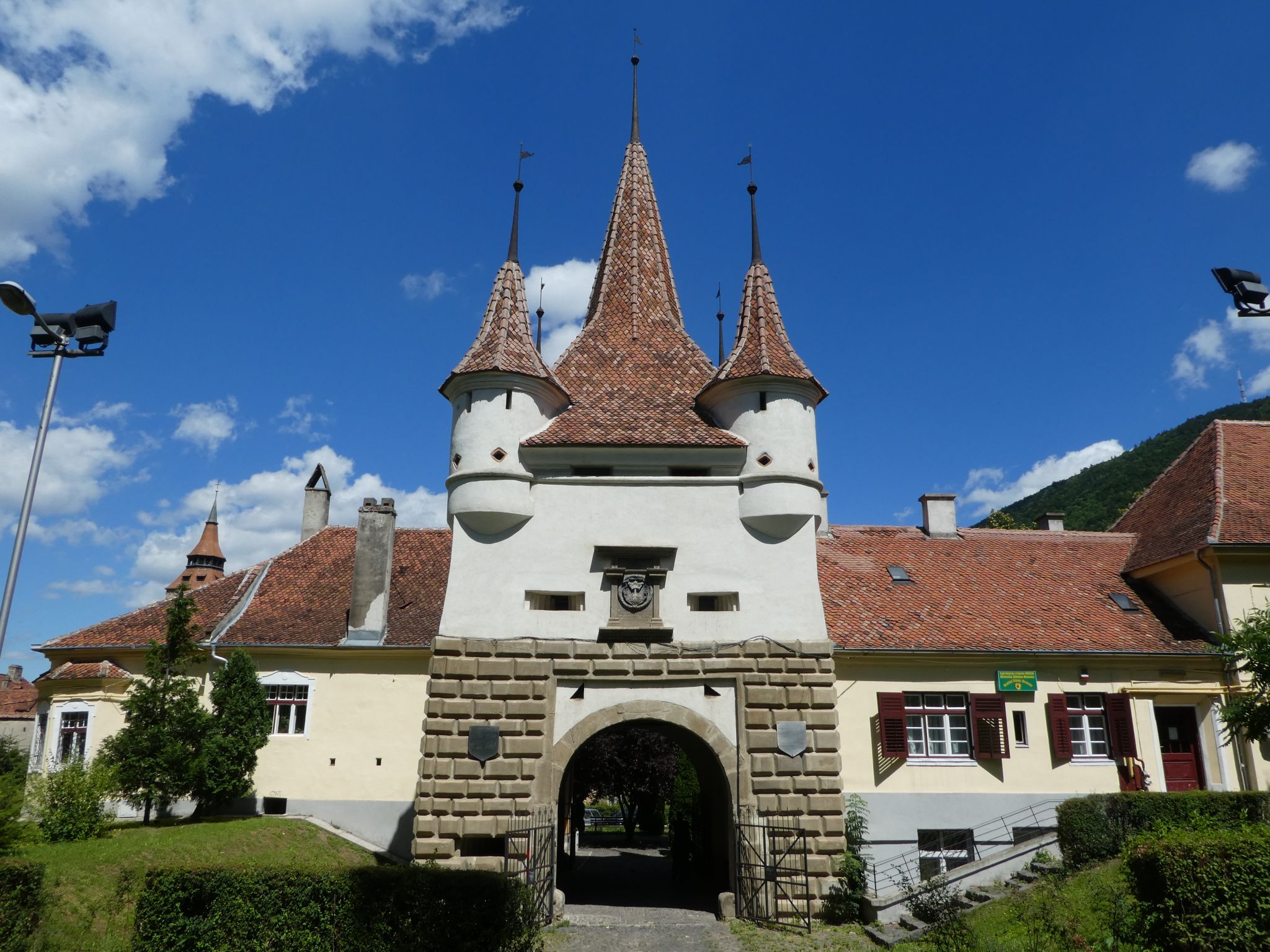 Brasov claims to have the narrowest street in Europe.  Strada Sforii (Rope Street) was built as an access way for firefighters.  It’s 80 metres in length and its width varies between 1.1 and 1.35 metres.  Despite its narrowness, some 25 windows front the lane. 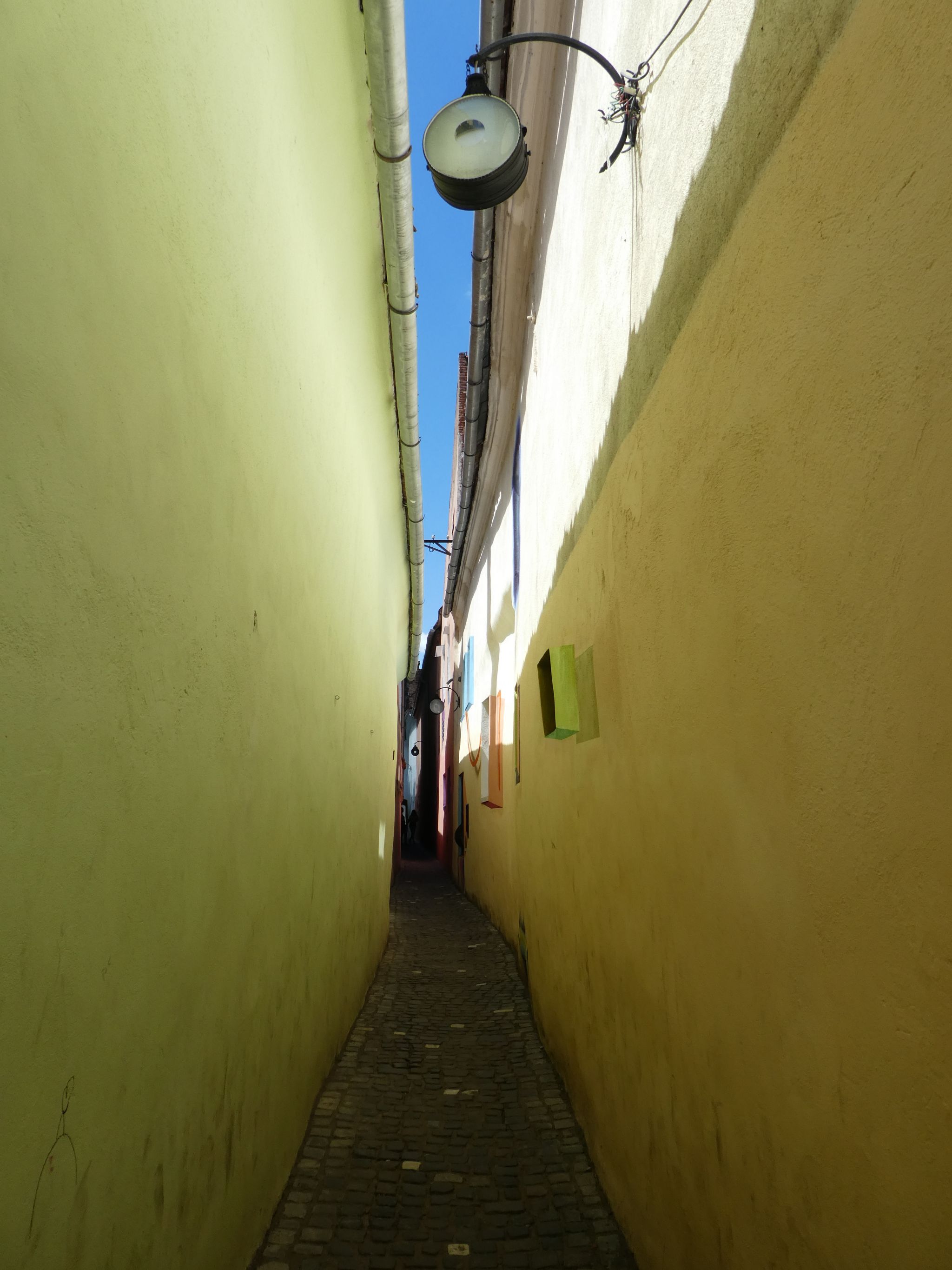 An annual folk festival was in full swing, with folk groups from across the Balkans participating a street parade, public performances in the square and cultural events. 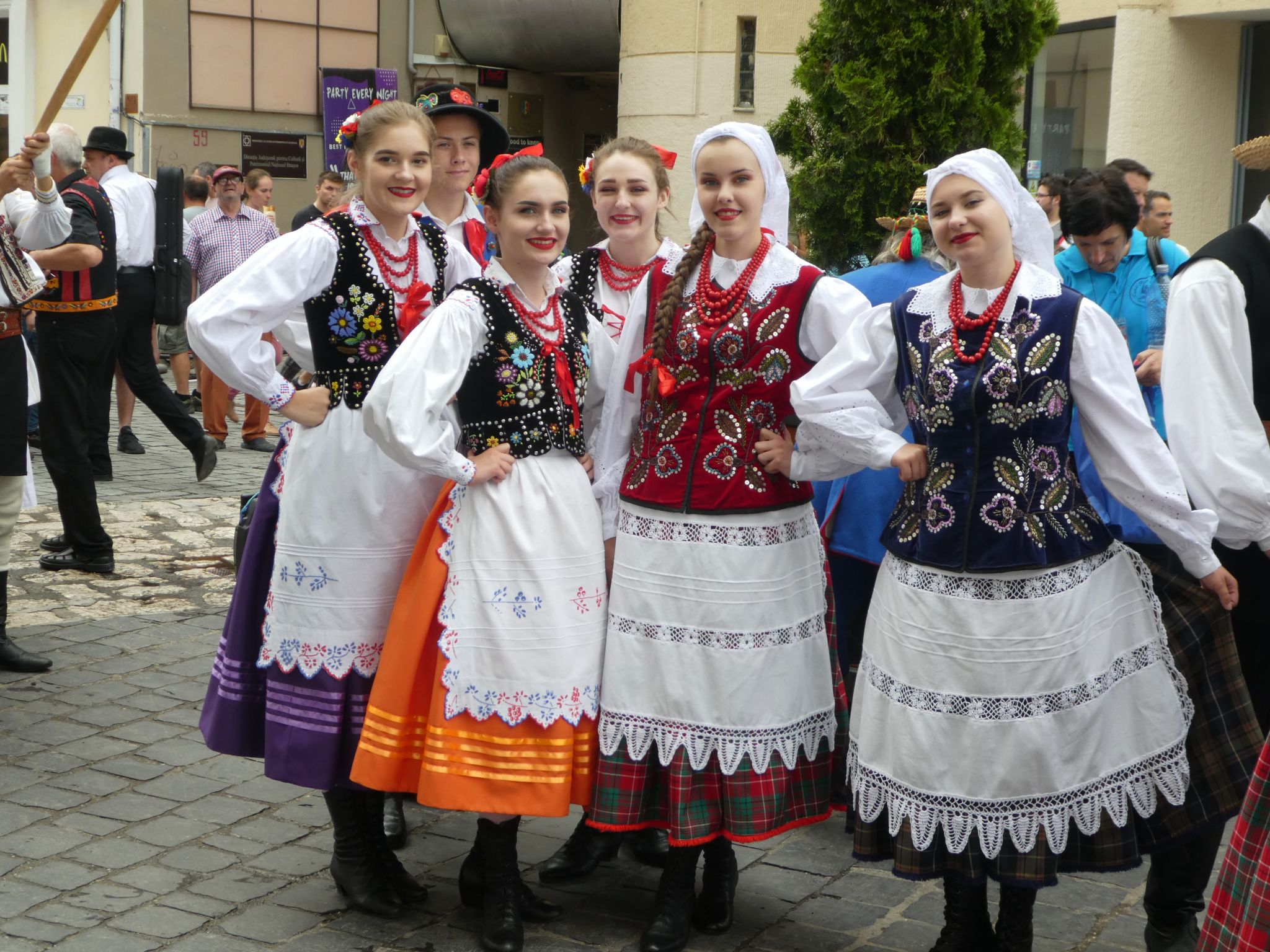 The Brasov town centre is beautiful in the long twilight of summer.  Bars and restaurants are buzzing and there’s live music and entertainment.  It’s a great place to kick back, and from which to drive the Transfagarasan Highway – see seperate post. 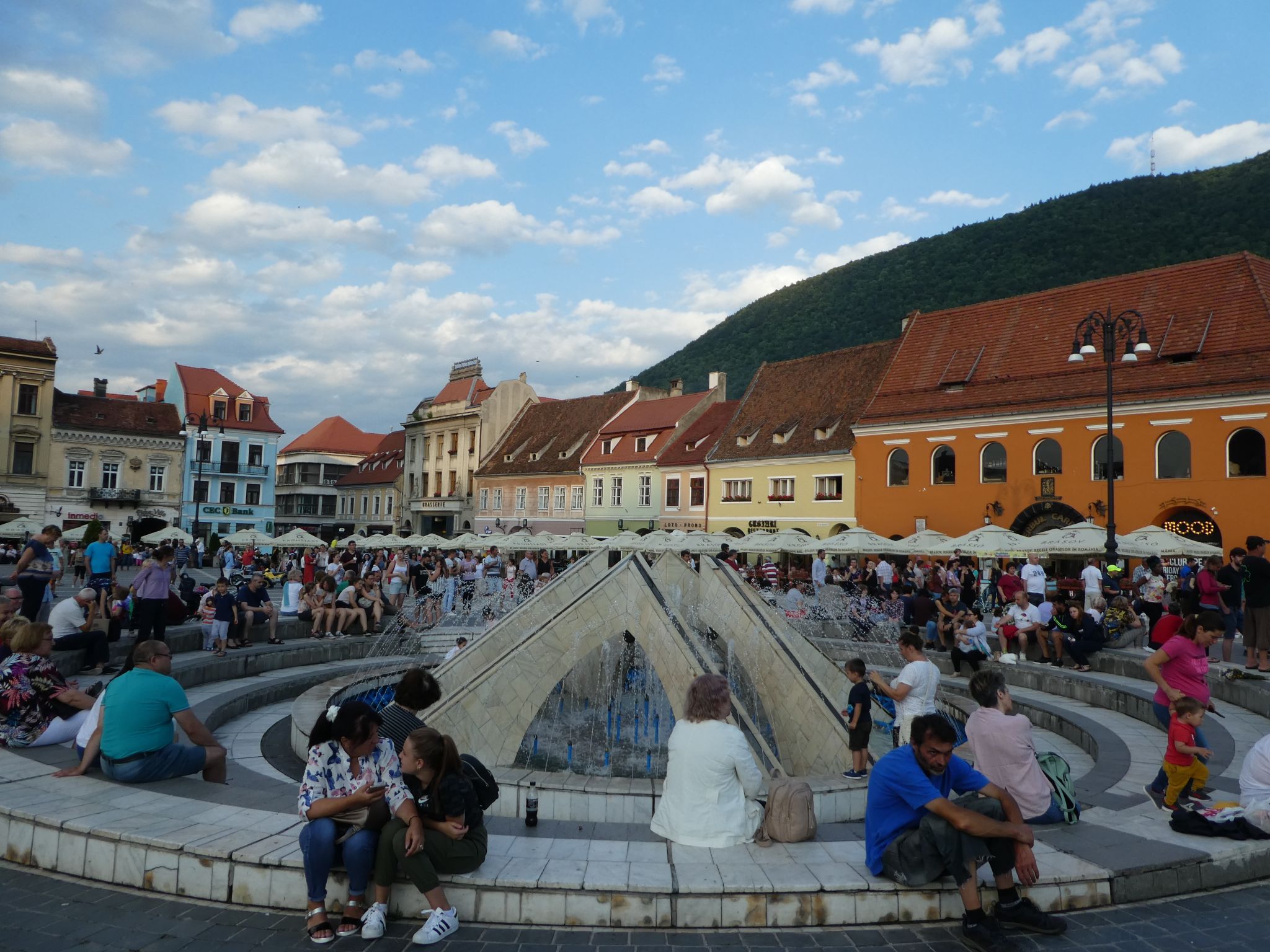 About 35% of the brown bears in Europe live in the Romanian Carpathian Mountains.   The forests around Brasov were once home to large numbers but the population dwindled in the 20th century due to habitat destruction, hunting, and trapping for exhibiting in circuses and restaurants.

Keeping bears became illegal in 2005, and hunting was banned in 2016 – although, shockingly, a Ministry of the Environment management plan from 2018 permits the hunting of 600 bears – 10% of the country’s total bear population – each year under the guise of public safety, but really as a sap to the trophy hunting industry.

Thankfully, reserves have been established in large swathes of forest around Brasov, where bears are totally protected and rangers undertake forest regeneration and park management activities.

They also take small groups to hides in the forest to see the bears.   Of course, we had to go.

After driving only about 40 minutes from downtown Brasov, we turned off on a forest track for a short distance, then continued from there on foot.

The guide pointed out bear tracks in the mud, and scratches on trees where the young cubs learn to climb. 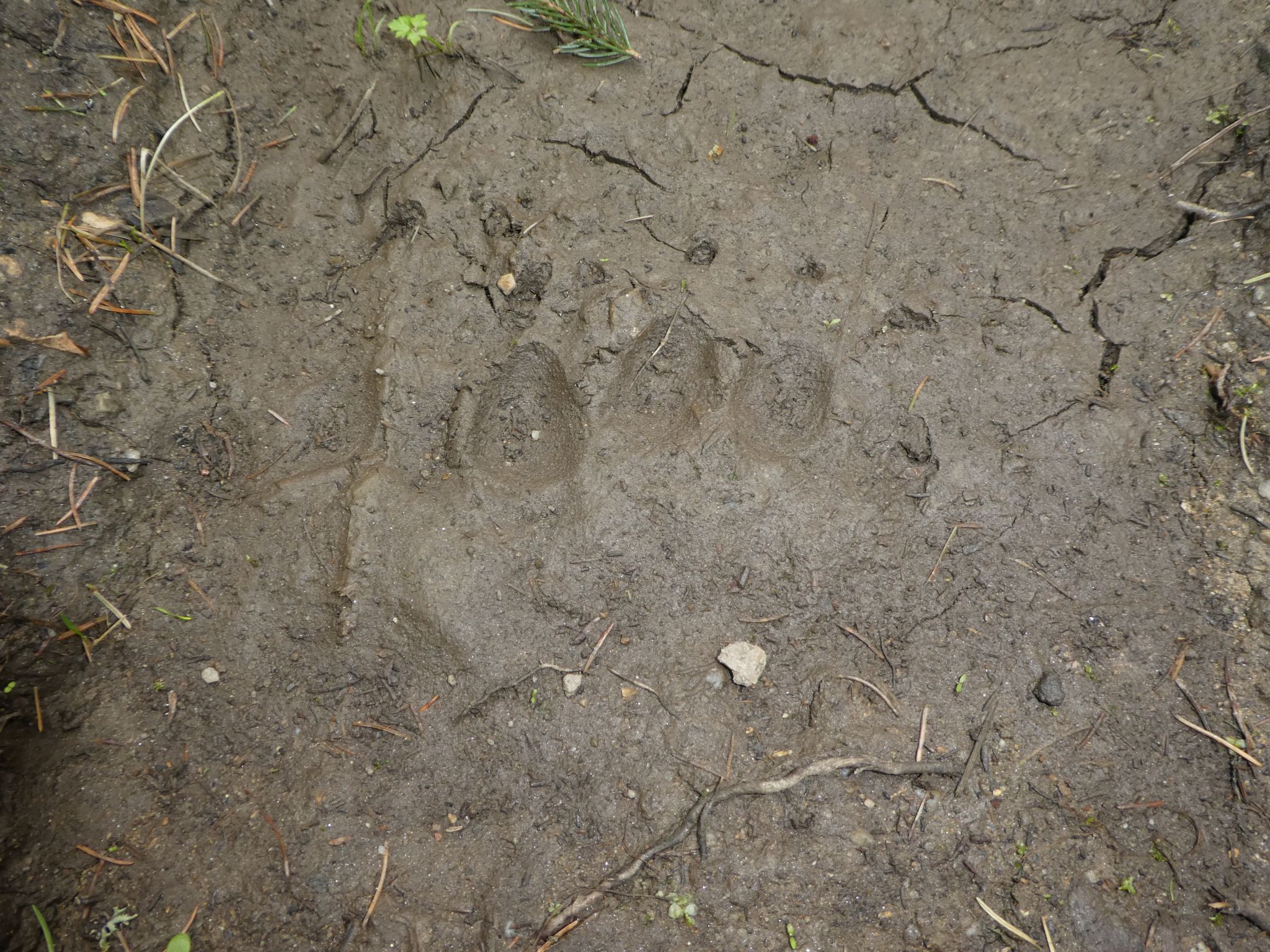 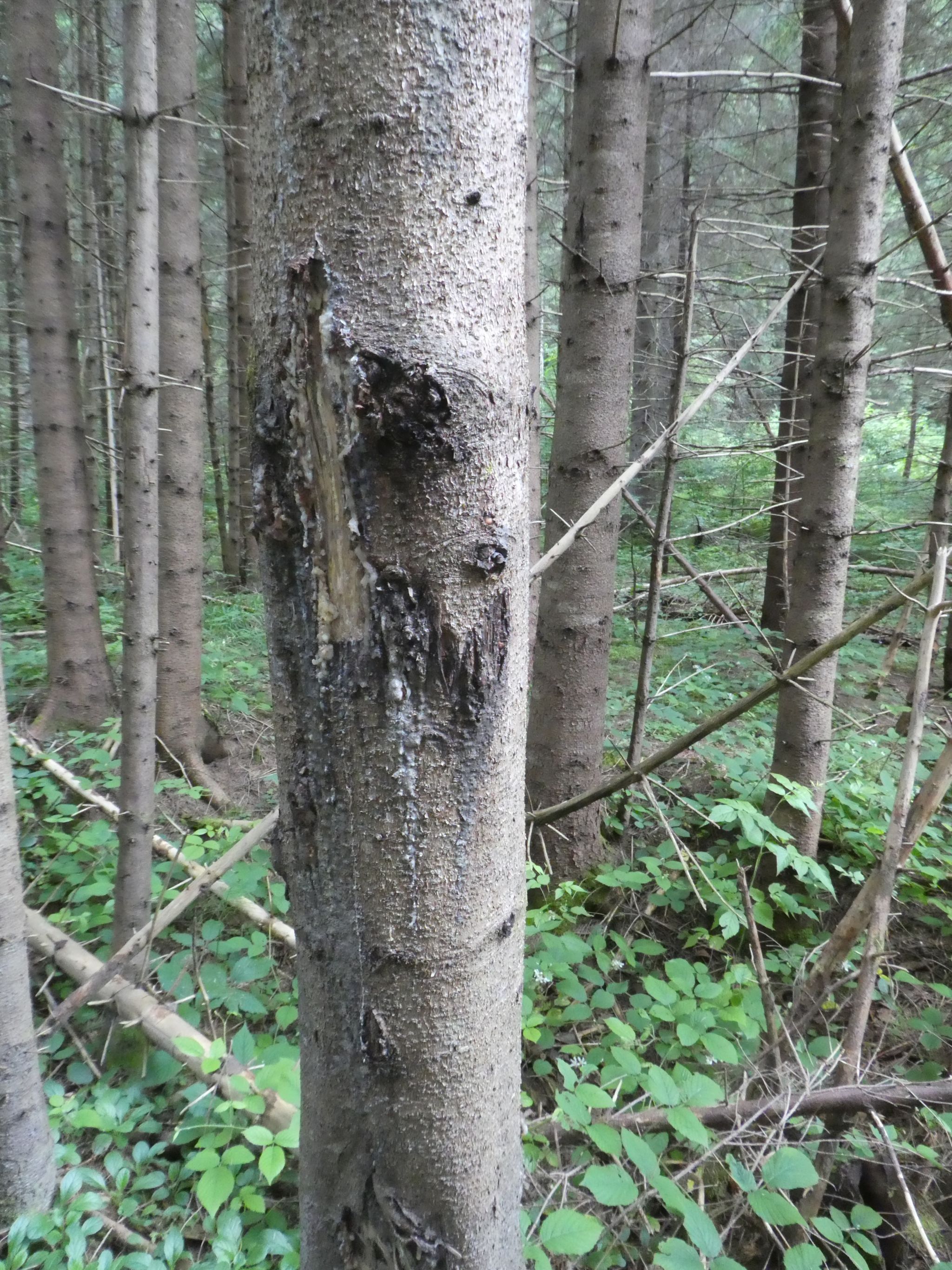 After a walk of about 20 minutes we reached a hide on the edge of a clearing in the forest.  In the late afternoon, ahead of our arrival, the rangers put out a small amount of food, usually corn, in the clearing to draw the bears into the open.  It wasn’t long before they started to arrive. 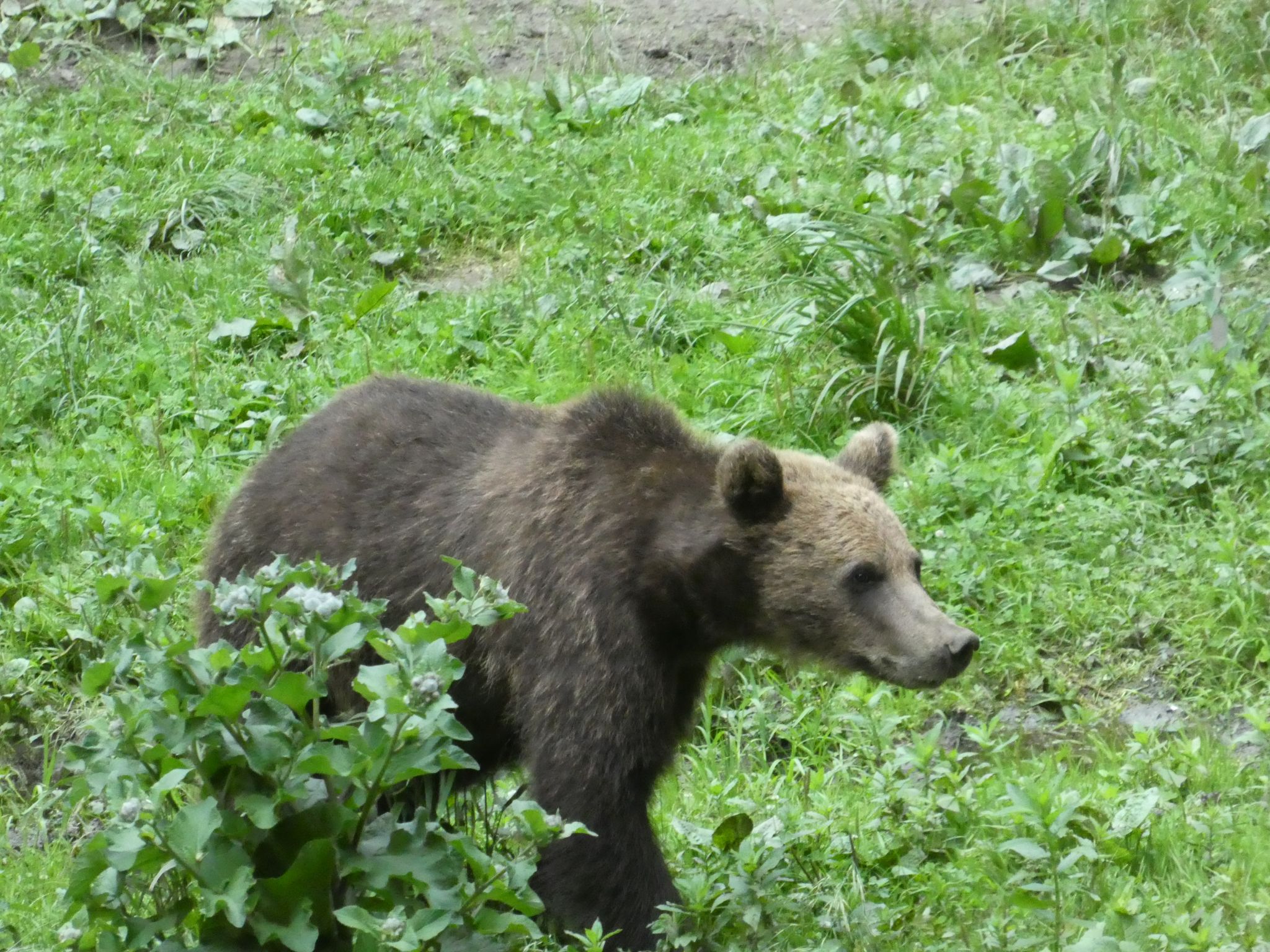 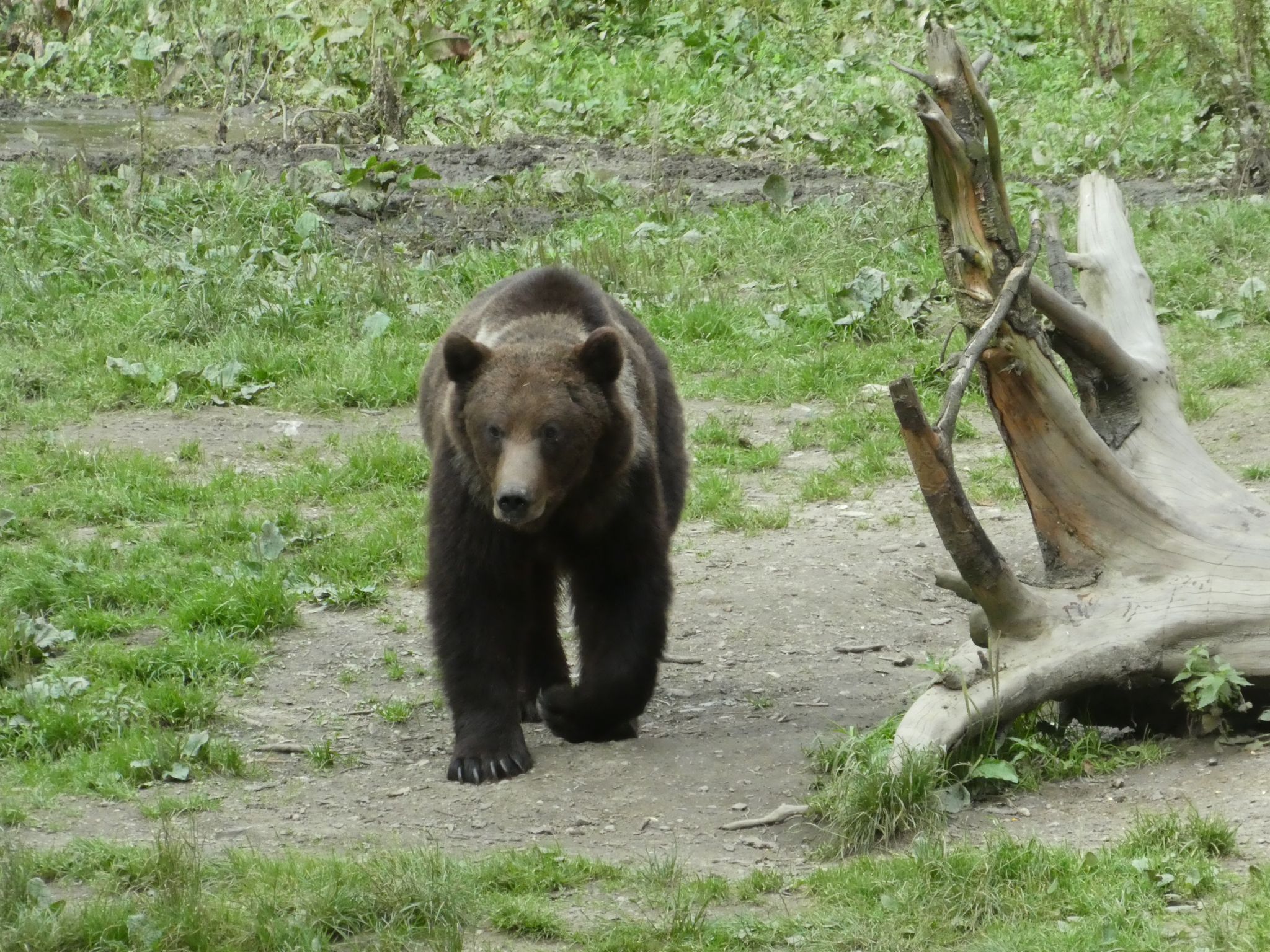 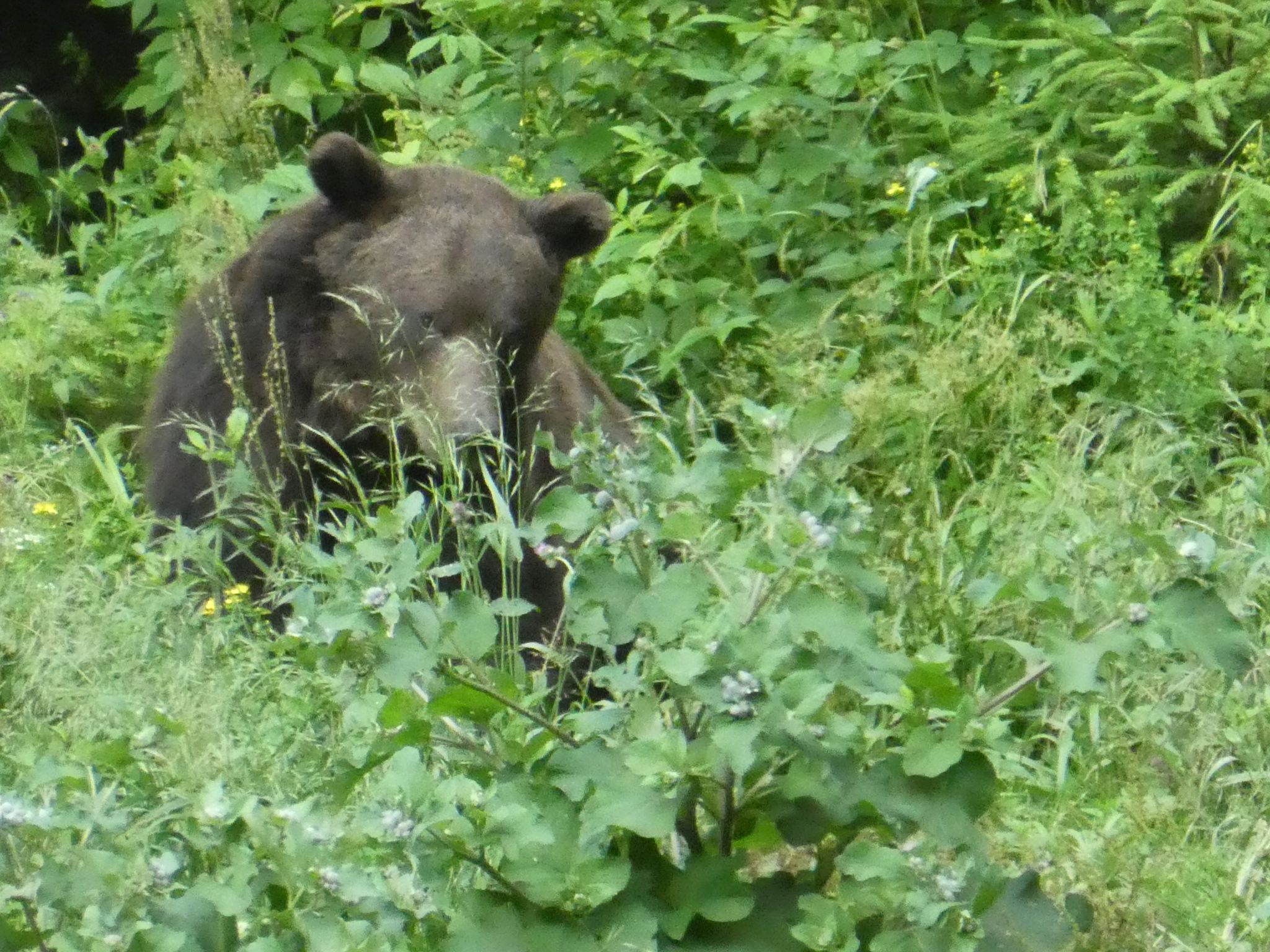 Others were not.  They were happy to come right into the clearing and have a feed. 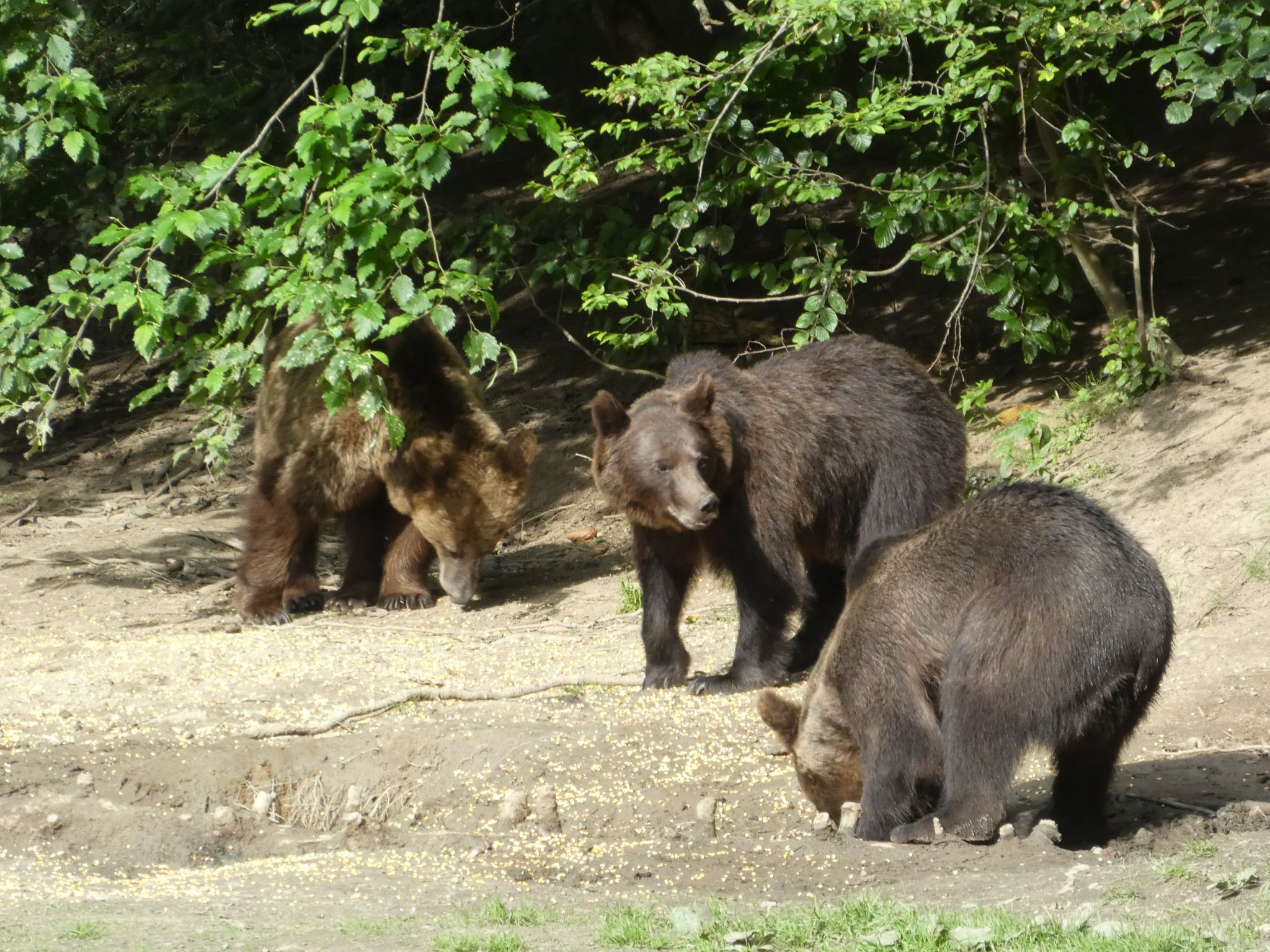 Some ate and left, others were happy to lounge around for a while. 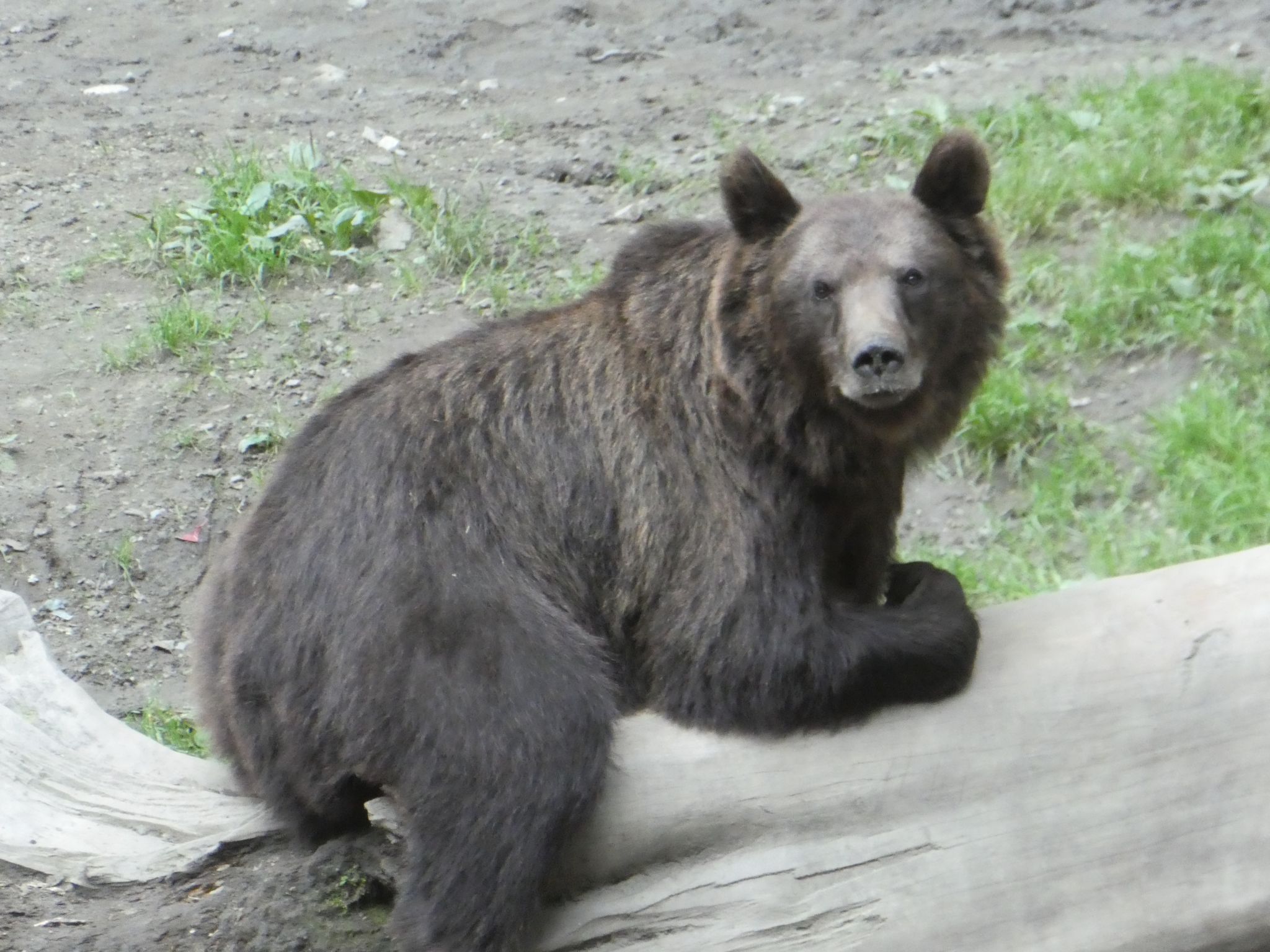 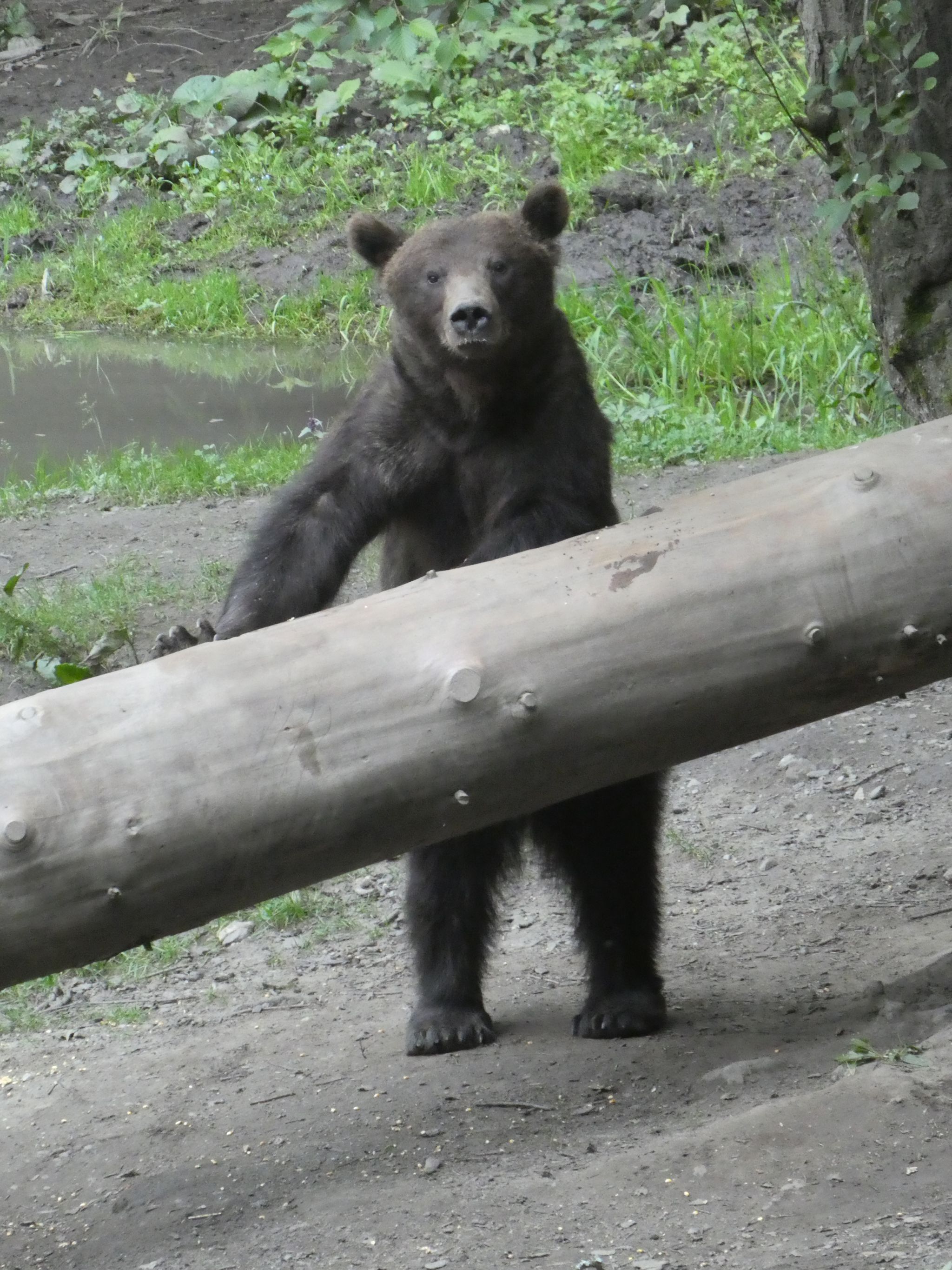 We watched them for a couple of hours in the long summer twilight.  They were fairly social with each other.  It seemed like a bit of a bear catch-up and gossip session. 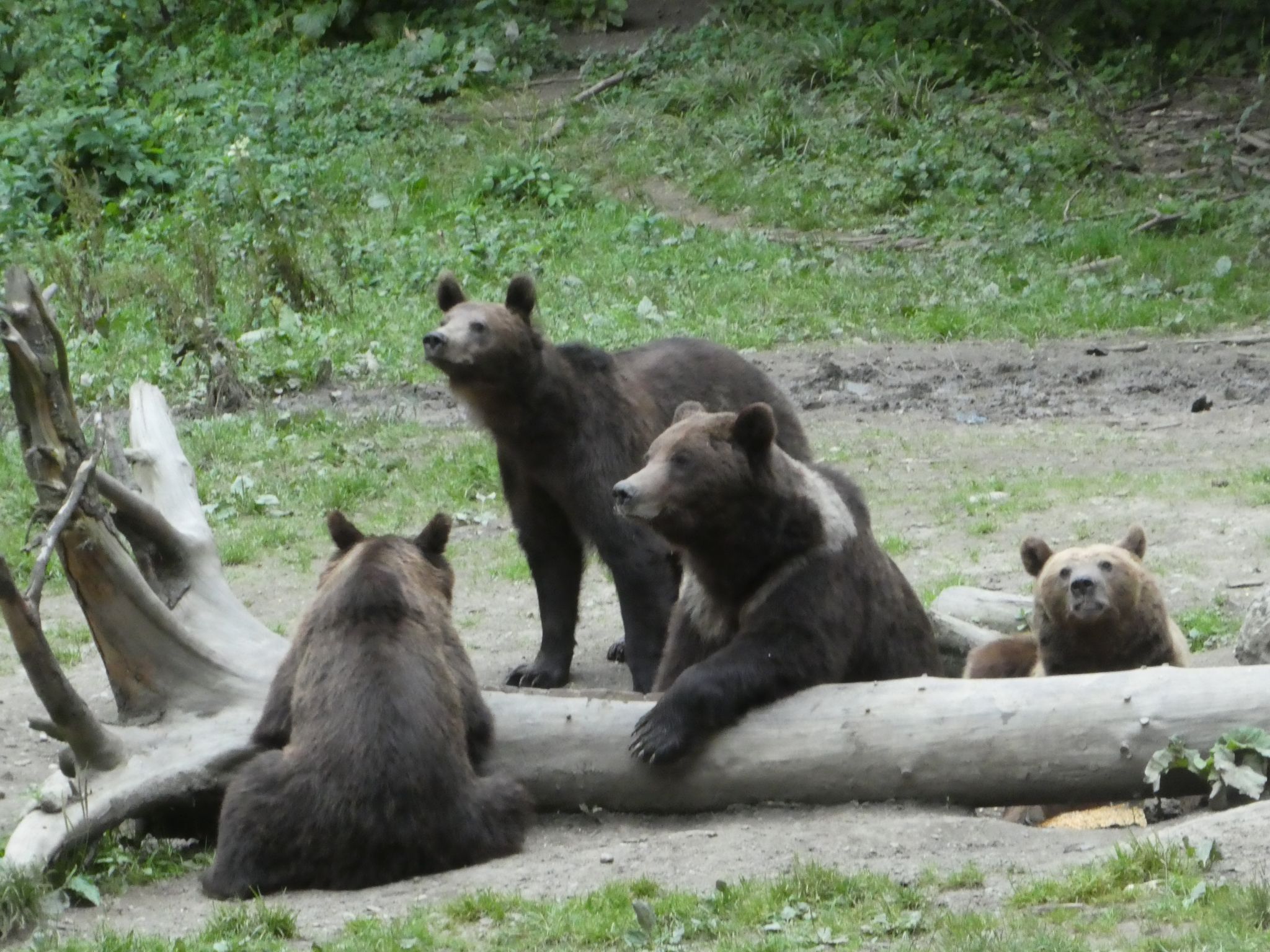 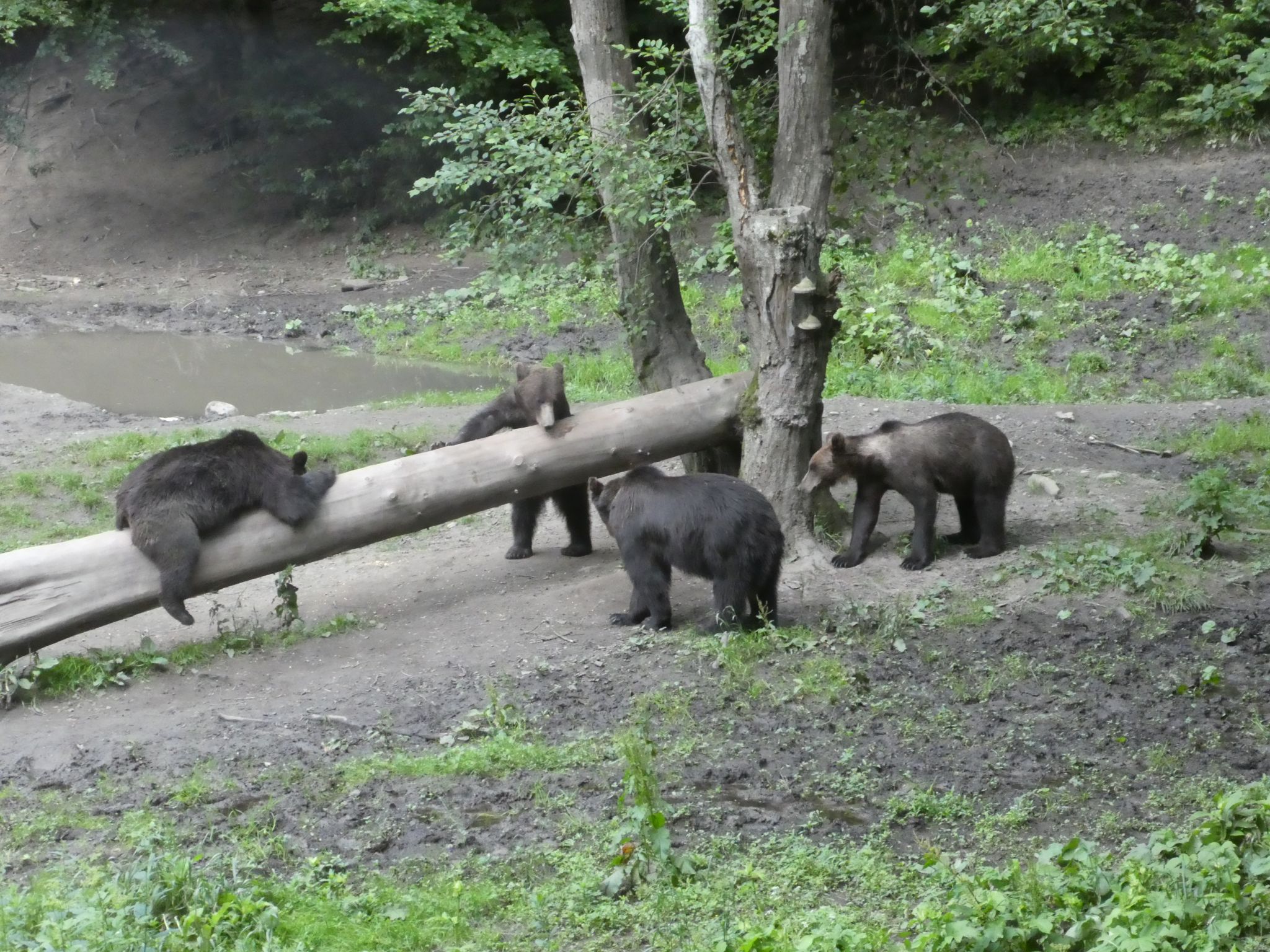 We were assured the food provided by the rangers is not enough to sustain the bears, so they still need to forage in the wild.  They don’t lose their survival skills and they don’t become dependent on human feeding.

Yes, it’s artificial, but at least the bears are in their natural habitat, are not in enclosures and are free from human predation.  And if letting tourists come to see the bears builds awareness of the need to protect them and to oppose hunting, that’s got to be a good thing too.