Confession time.  We are both fans of the (now defunct) UK motoring show Top Gear – the James May/Jeremy Clarkson/Richard Hammond version, that is.  So when we found ourselves in the vicinity of what the Top Gear guys pronounced ‘the best road in the world’, there was only one thing to do.

If you haven’t watched it, go to youtube and google ‘Top Gear Romania whole episode’.  Despite some unfortunate (and inaccurate) slurs about Romanian peasants, it’s a lot of fun.  The guys drove the Transfagarasan Highway in, respectively, a Ferrari California, a Lamborghini Gallardo and an Aston Martin DBS.  Unfortunately we couldn’t find anyone to hire us one of those for two days, so we had to settle for a fairly vanilla but appropriately grunty Mercedes.  Honestly, the compromises one has to make sometimes.

Why is the road so special, you may ask.

After the Soviet Union invaded Czechoslavakia in 1968, Nicolae Ceausescu got nervous that Romania might be next.   The existing military access roads through the Carpathian Mountains mostly followed river valleys and could potentially be easily blocked or attacked by an invading force.  Ceausescu’s solution?  Build a highway over the top of the Fagarasan Mountains.

Given the topography, that was never going to be easy. 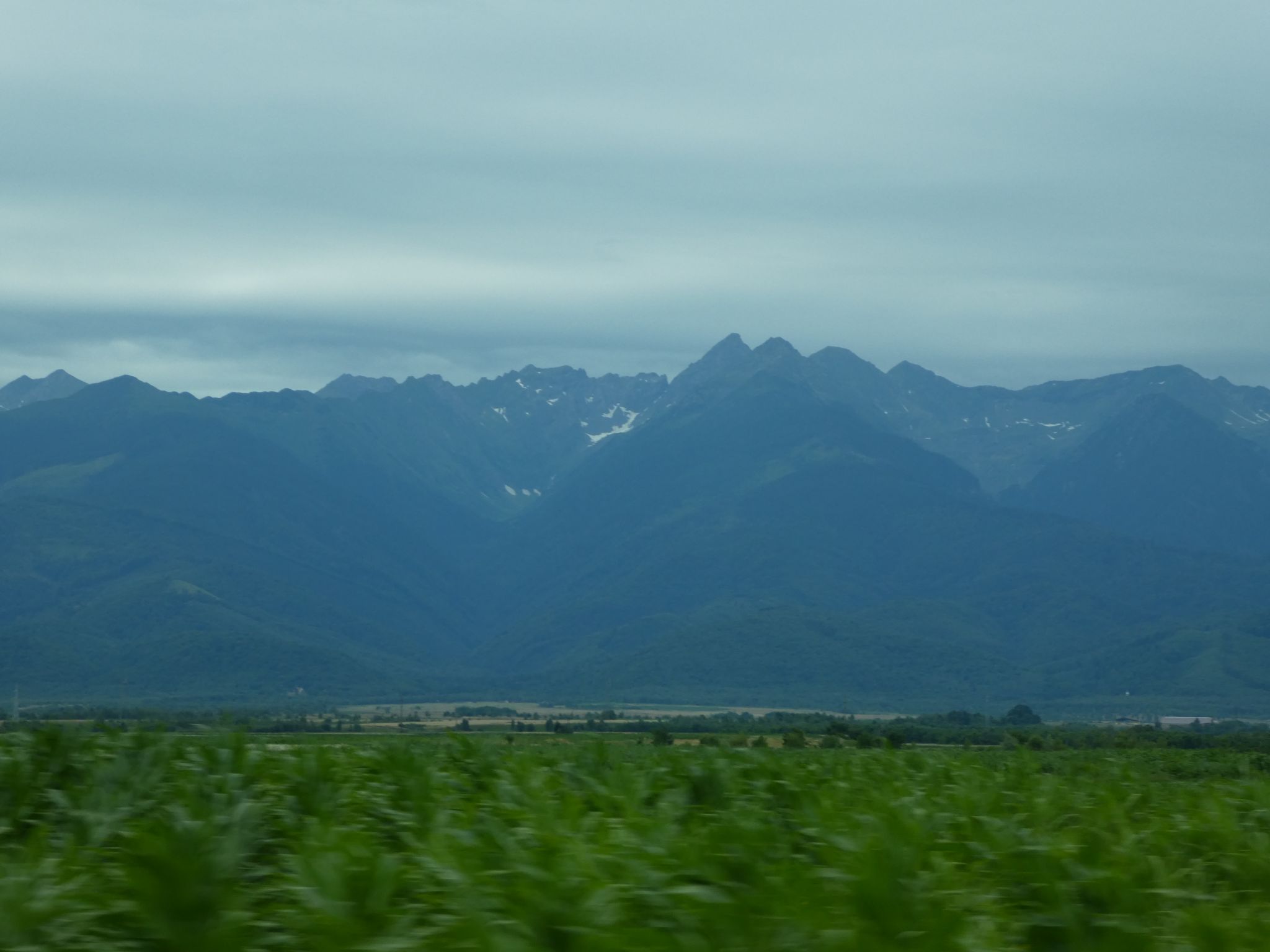 Constructed between 1970 and 1974, the Transfagarasan Highway climbs to an elevation of over 2,000 metres, making it the second highest paved road in Romania.  It has more tunnels and viaducts than any other road in the country.

It’s construction came at a very human cost.  More than 6 million kilograms of dynamite were used to blast a way around the mountainsides, and most of the workers were junior military personnel with no training in blasting techniques.  The official death toll was 40, but worker estimates put the number in the hundreds.

It was never actually used for any military purpose, and even now it is closed from November to June because snow and ice render it impassable.  Not so useful, then, if the Soviets had invaded in the winter.   It is no small wonder that the road came to be known as ‘Ceausescu’s Folly’.

Heading into the mountains on the first section of the road, the forest was thick and the road was no more curvy than many other mountain roads.  But once we cleared the tree line, it changed dramatically. The road becomes a series of steep hairpin bends and S-curves, perfect for motorcycles and cars with a bit of horsepower.

The climb is so steep that in places, viewed from above, the road looks like it loops over itself. 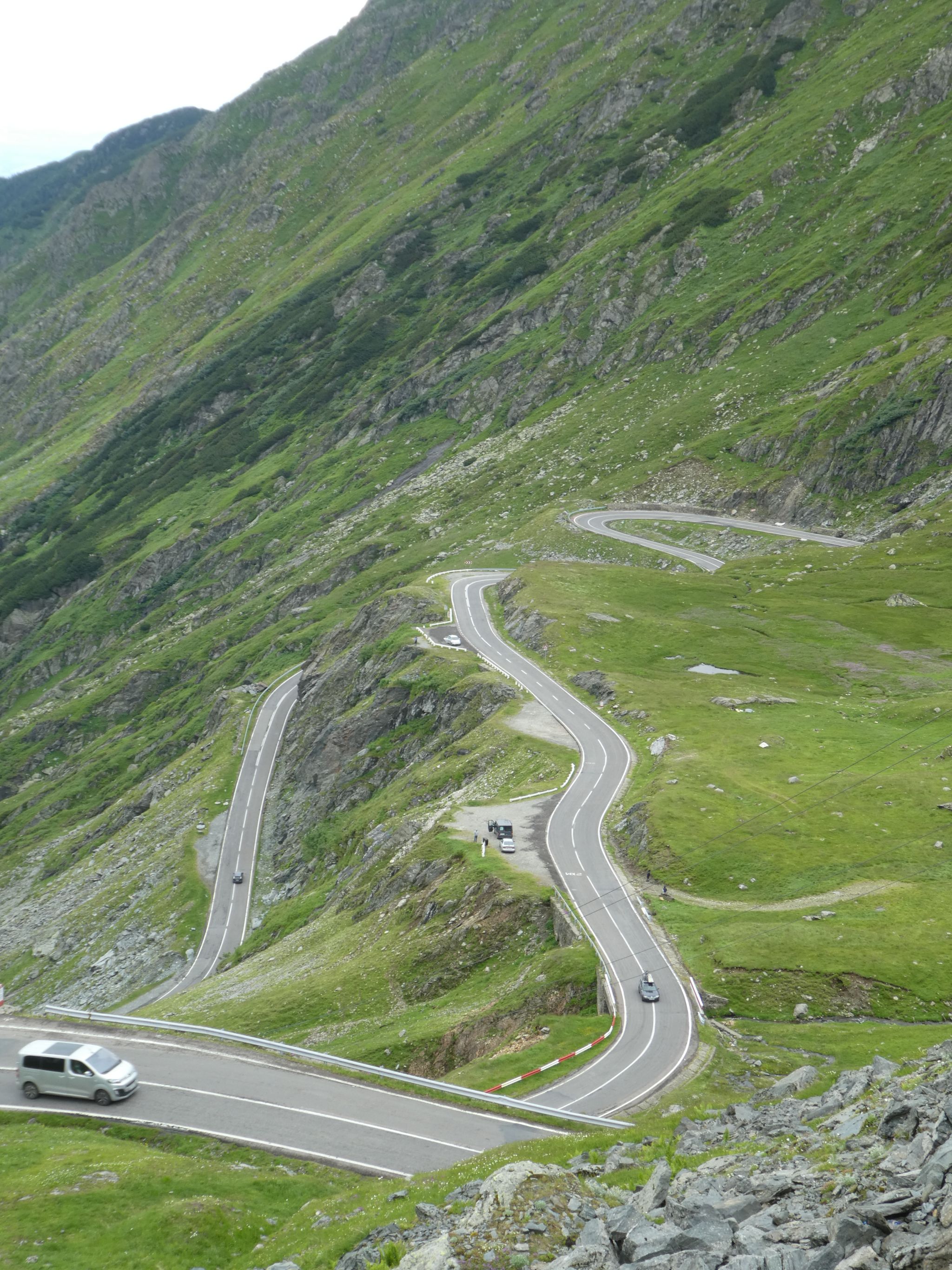 Driving this highway has become popular and we were resigned to the possibility of creeping along behind an inconsiderate plodder in a camper van, but happily, it was not so.  There were other cars about, but mostly John had the opportunity to put the pedal down and play rally driver for a day.

Unlike the Top Gear guys, the authorities didn’t close the road to other traffic just for us, so it wasn’t quite the adrenaline thrill of using the whole road and speeding into blind curves the way they did, but it was still a heap of fun.

At the top of the pass, the views were incredible and the crazy twists and turns of the road were clear. 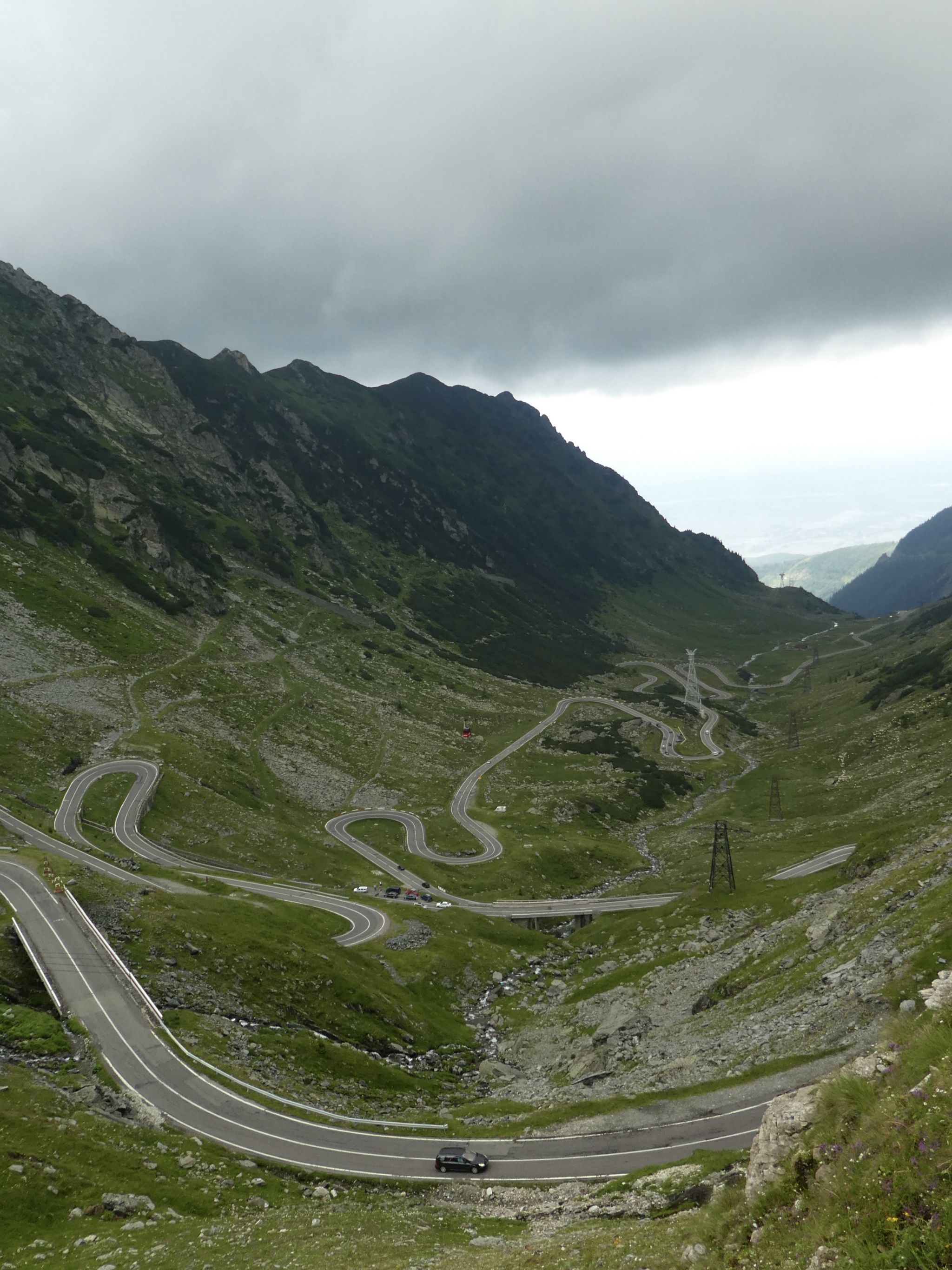 After the pass the road heads down, with more of those maniacal switchbacks until reaching the forest and flattening out a bit.  The road continues on to the Vidraru Dam where there are a few nice chalet-style hotels around the shore.  It was an idyllic spot. 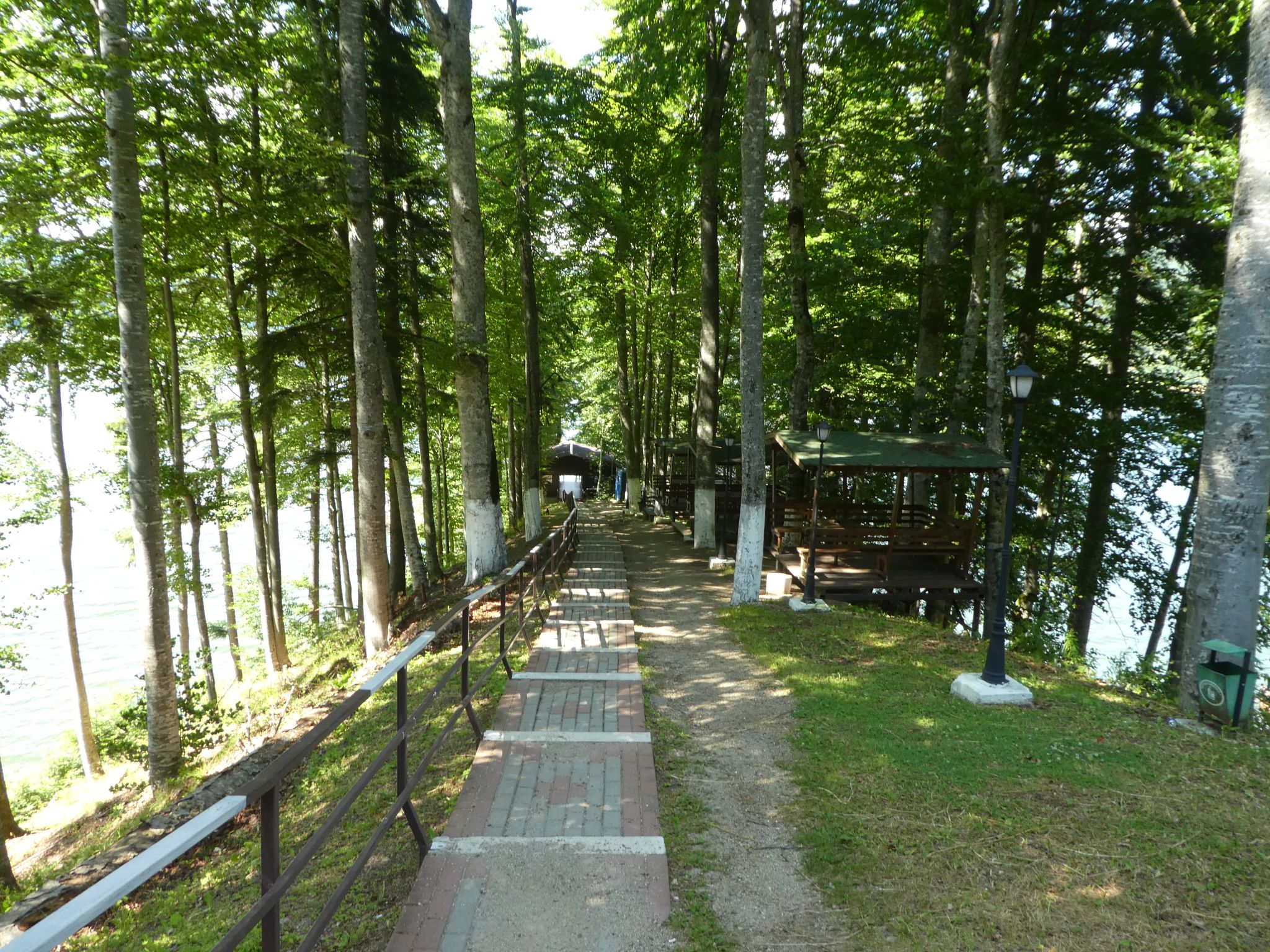 But only to be enjoyed in daylight hours.  These signs were around the hotel. 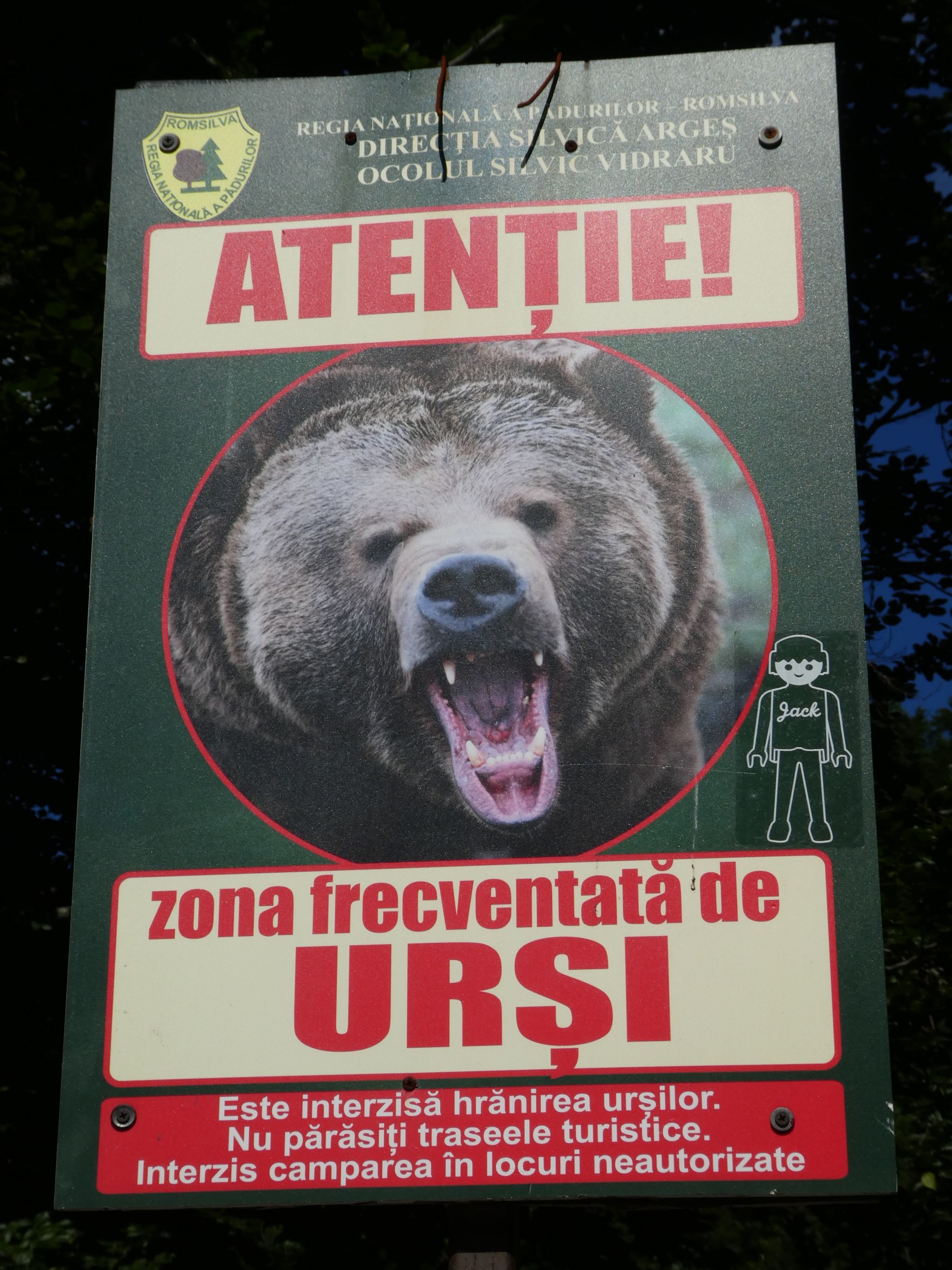 And for the benefit of non-Romanian speakers, the hotel was making sure the message was clear. 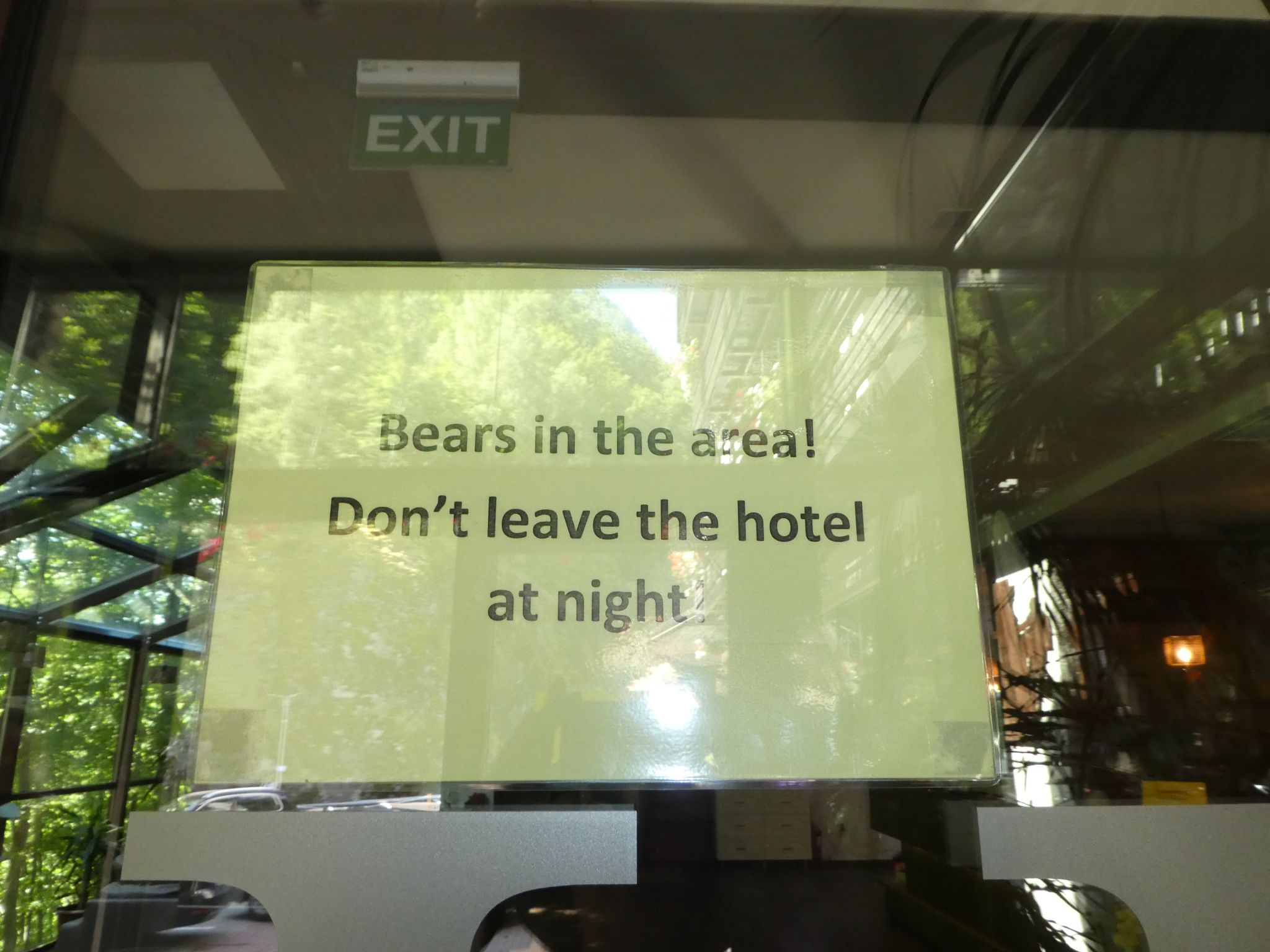 Next morning we continued and a short time later, the highway passes along the top of the Vidraru Dam wall.  It’s massive, and looking down over the side causes a really unpleasant dizziness. 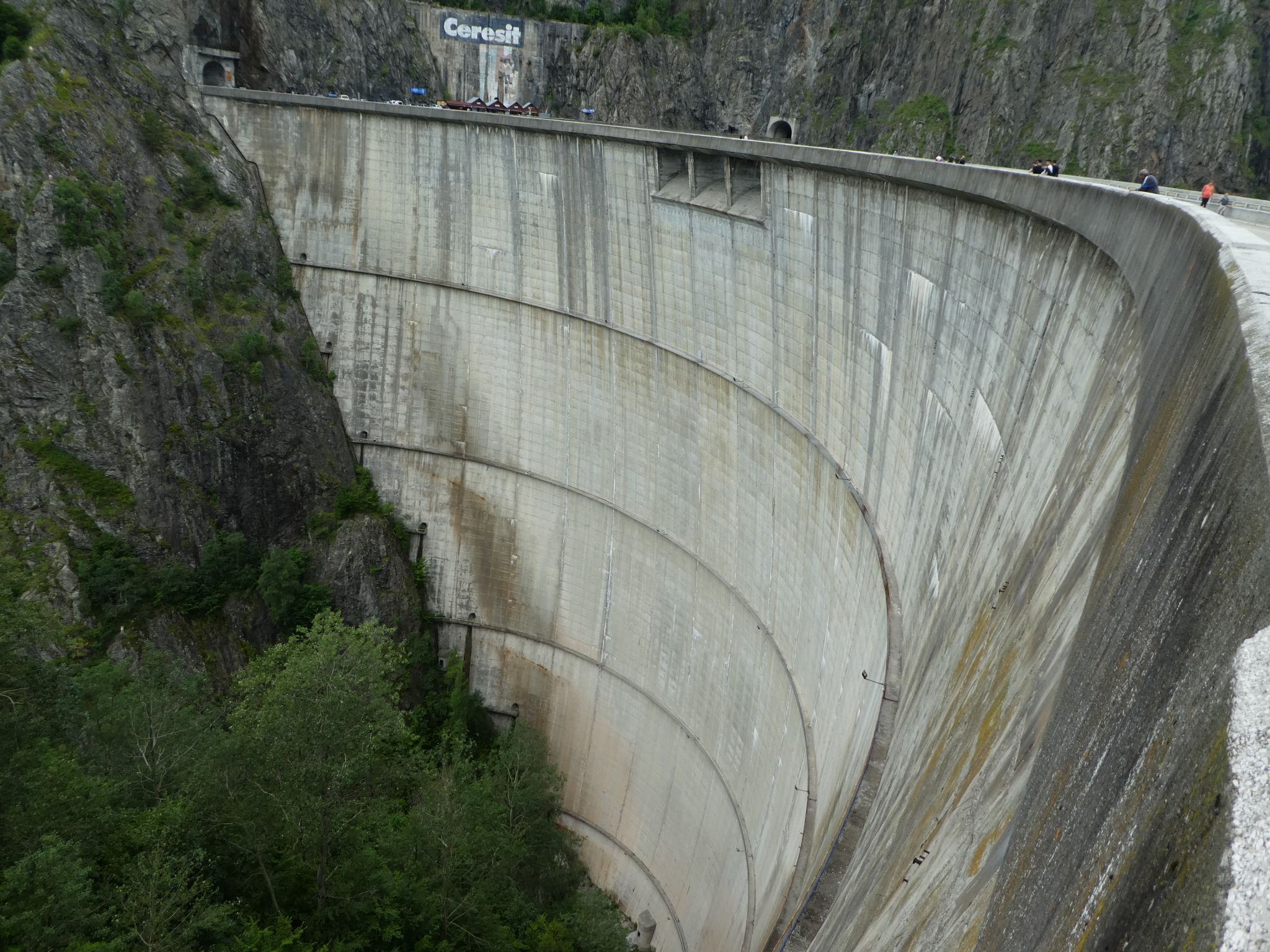 If you’ve watched the Top Gear episode you might remember they purportedly arrived in the dark and slept in their cars, waking to discover they were parked at the bottom of the dam wall.   There’s some great footage taken from the bottom looking up.

From the top we could see the access road in. 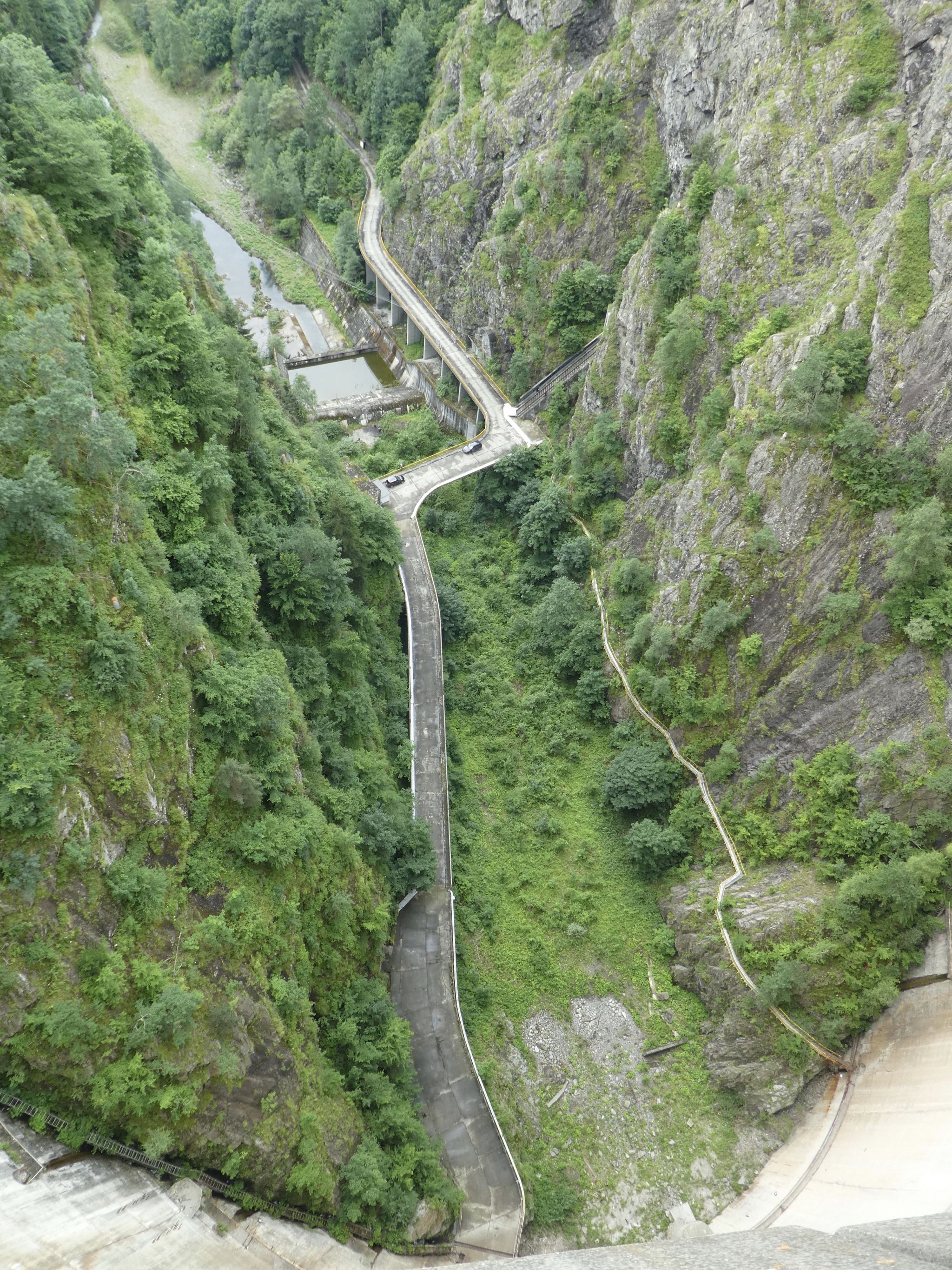 There were only a couple of cars down there so we figured non-celebrities probably can’t go all the way in, but we thought we’d try and check it out.   Alas, our suspicions were confirmed.  We found the access road, but there’s a boom gate and a sign we didn’t need an interpreter to understand.  That’s Romanian for ‘talk to the hand’. 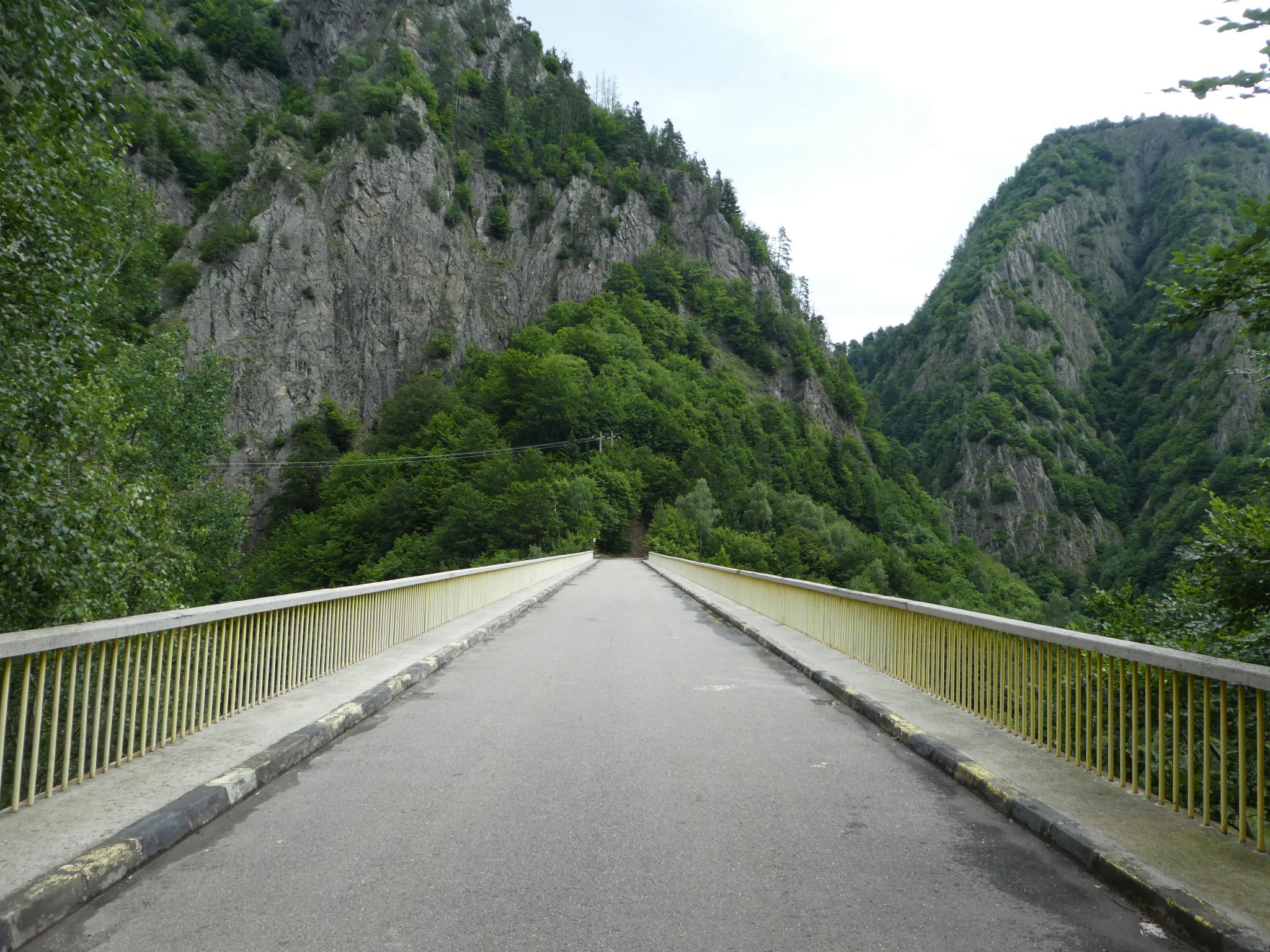 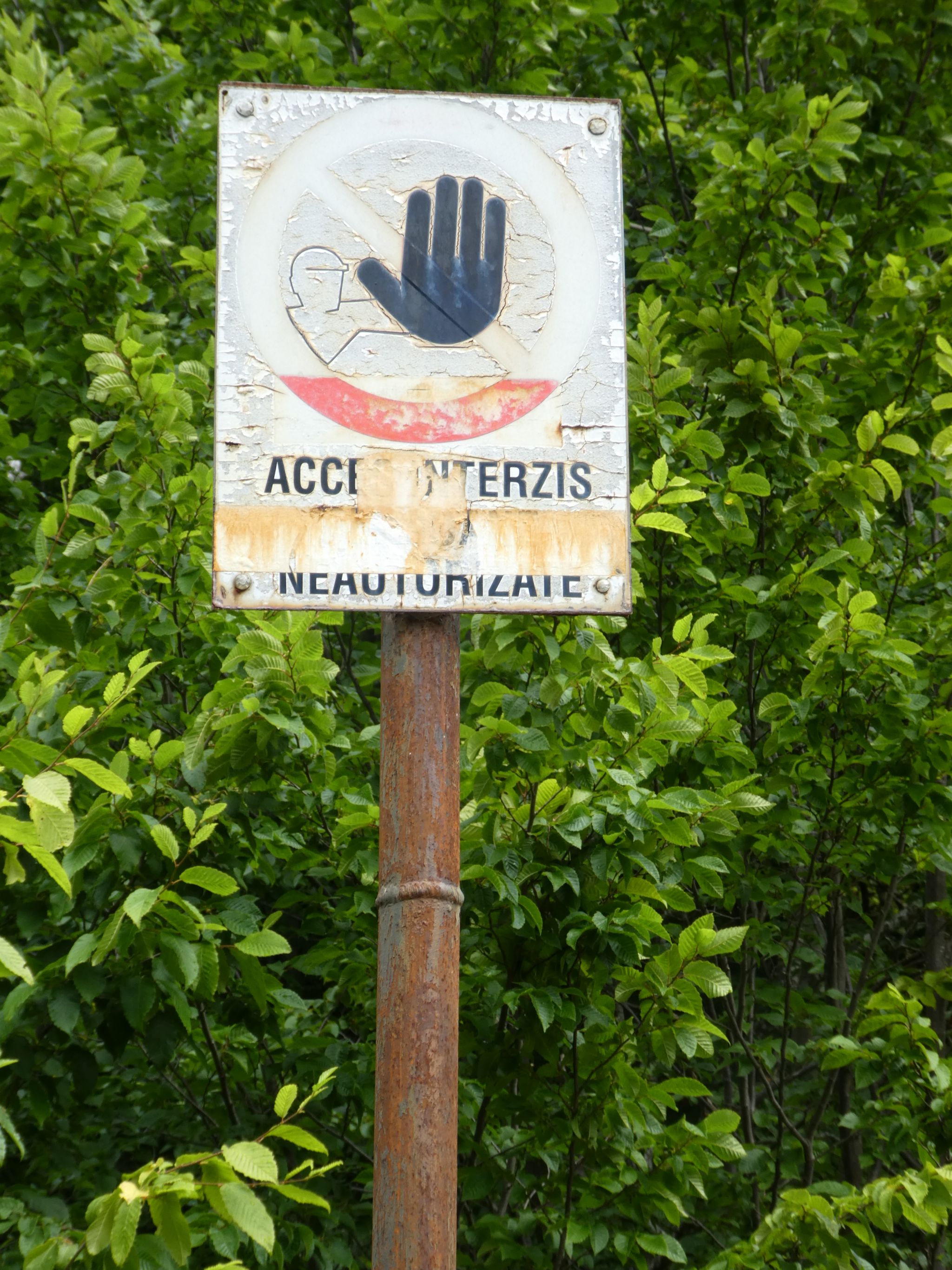 After that, we had two choices: continue in a loop around the base of the mountains on an ‘ordinary’ road back to Brasov, or go back the way we came and experience roaring up the ‘best road in the world’ again.  No prizes for guessing which option we took. 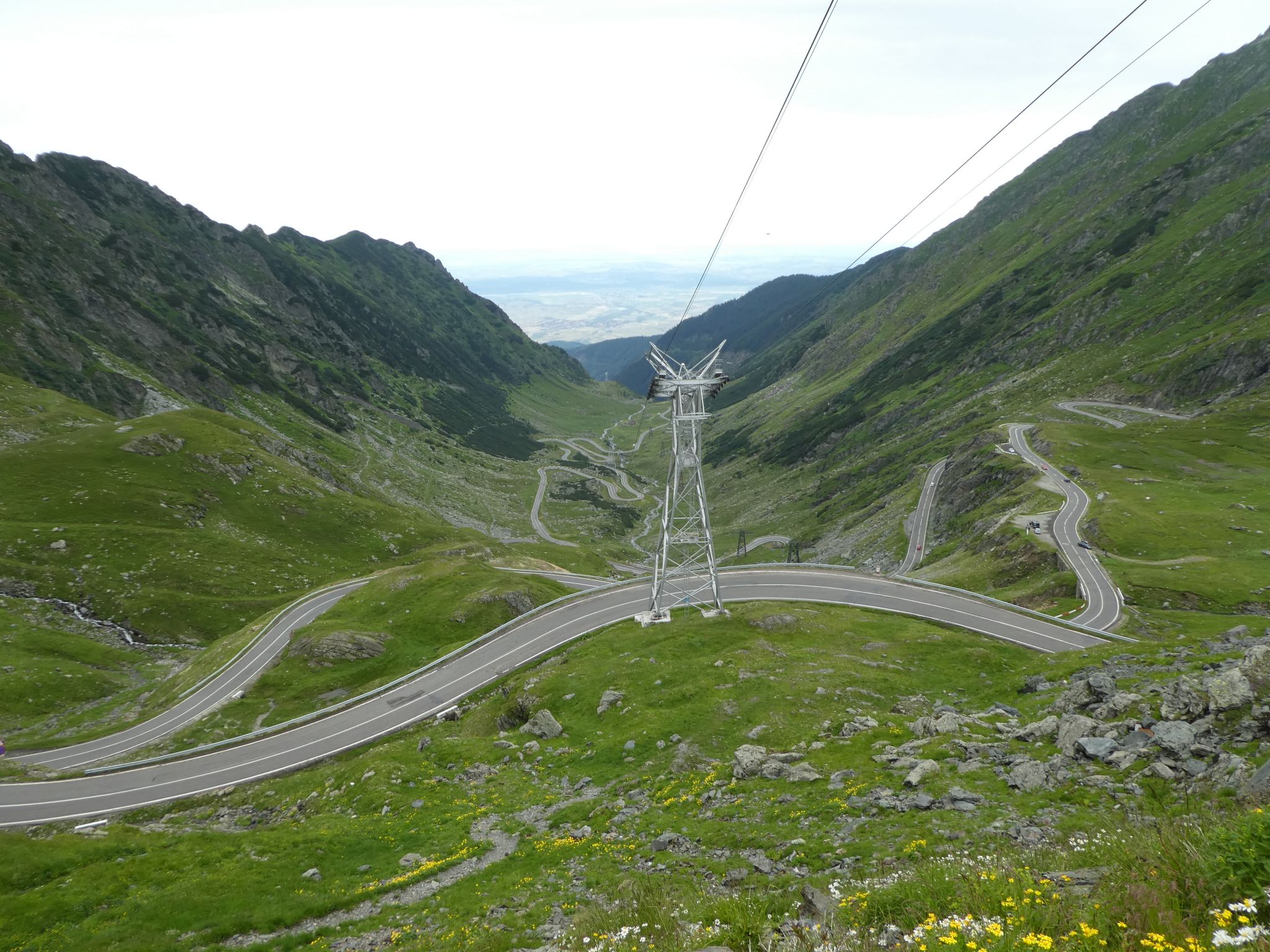