If ogling the excesses of the communist era is your thing, the Palace of Parliament in Bucharest, colloquially referred to as the Castle of Ceausescu, ticks every box. 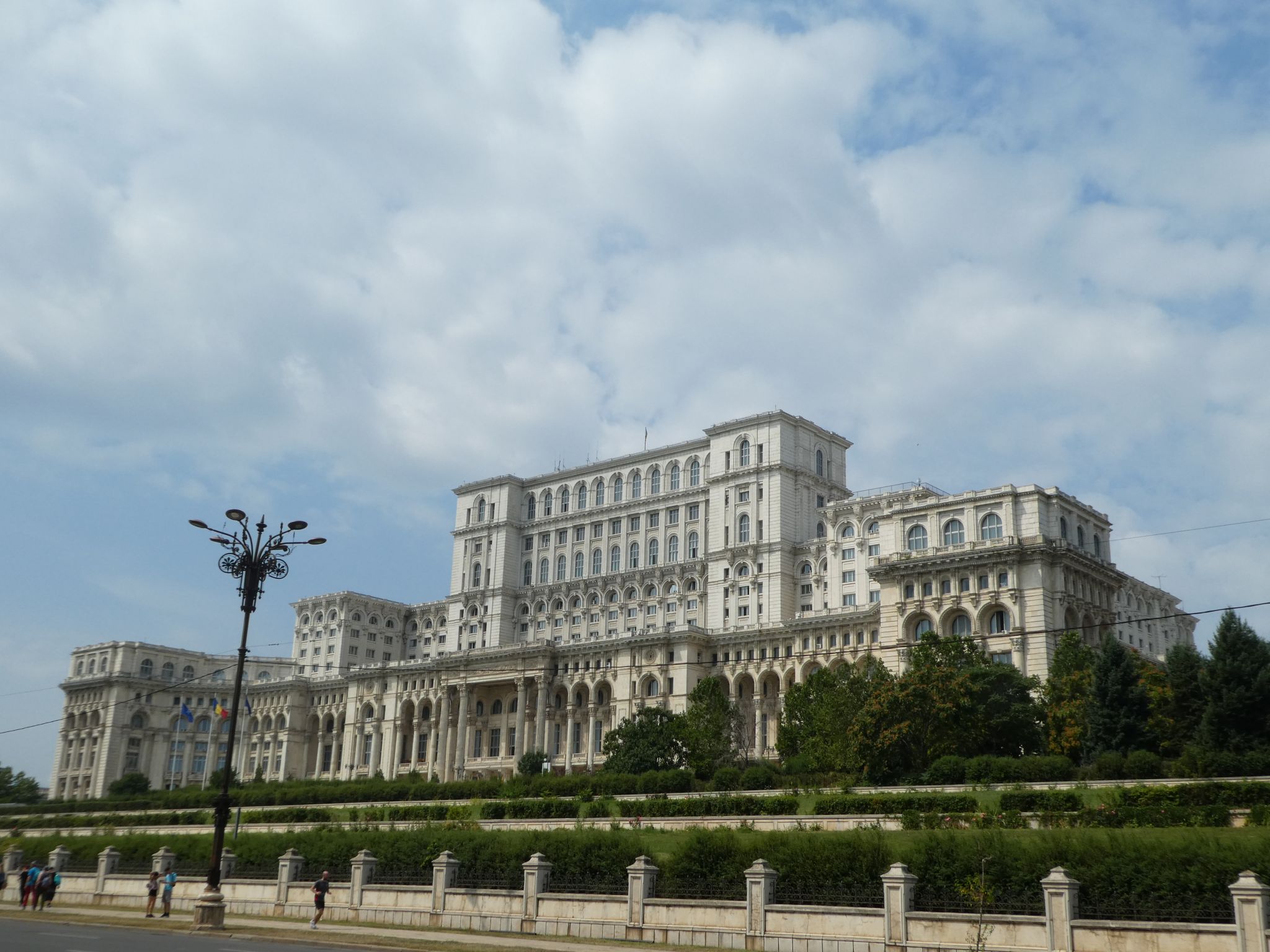 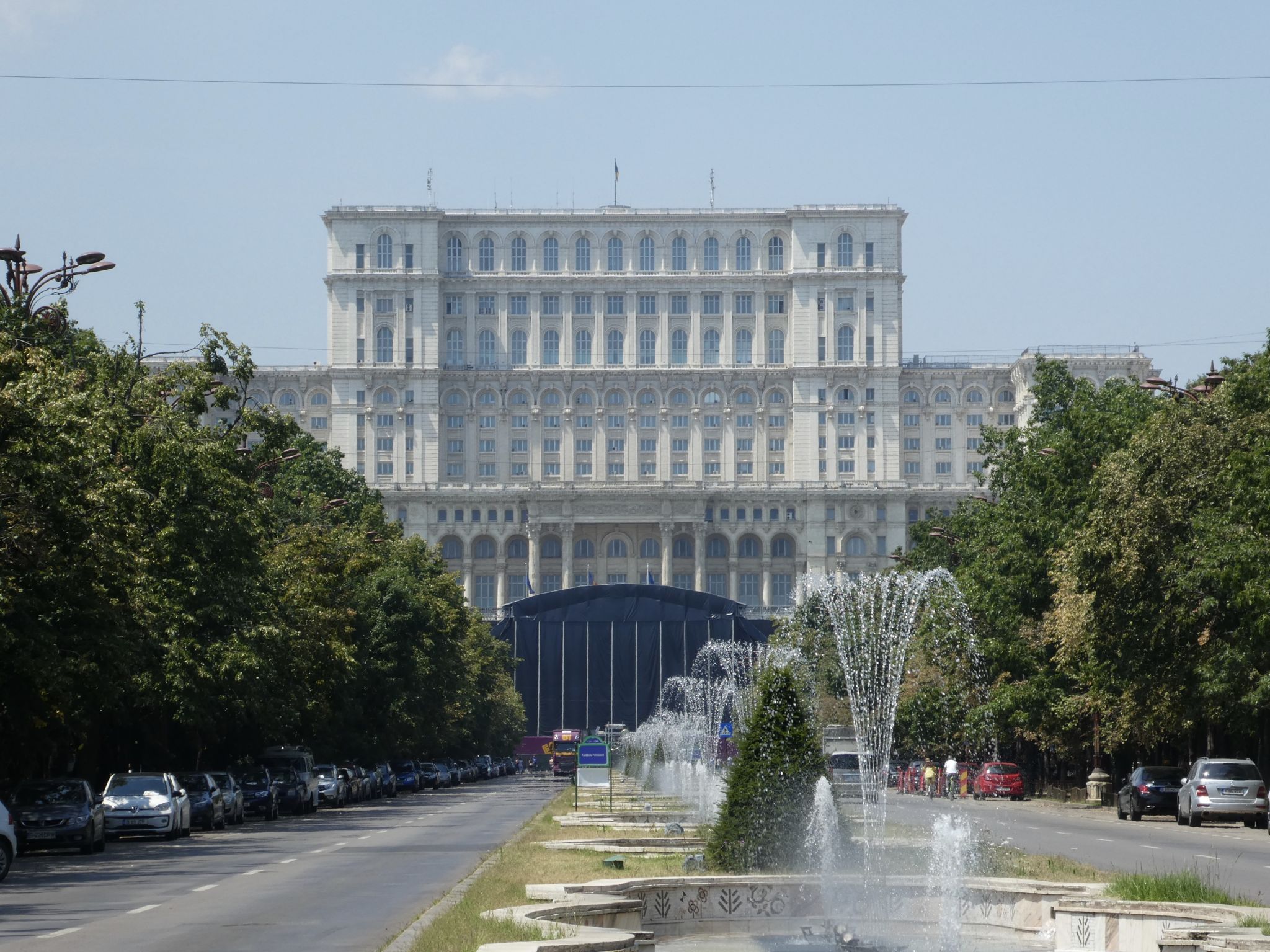 Many thousands more were displaced when areas around it were cleared for a Champs Élysées style boulevard and a ring of further ostentatious buildings intended to showcase this monument to megalomania. 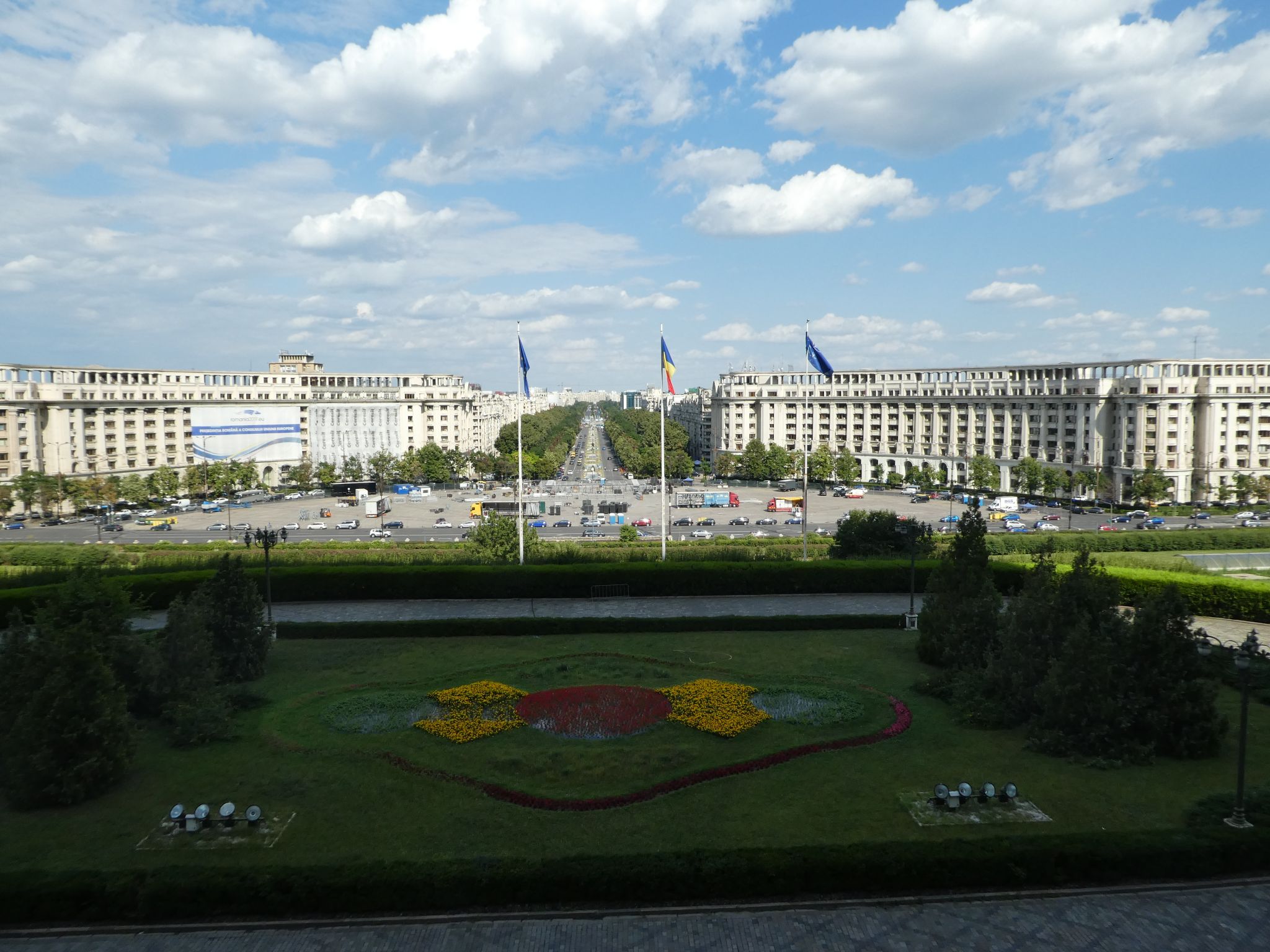 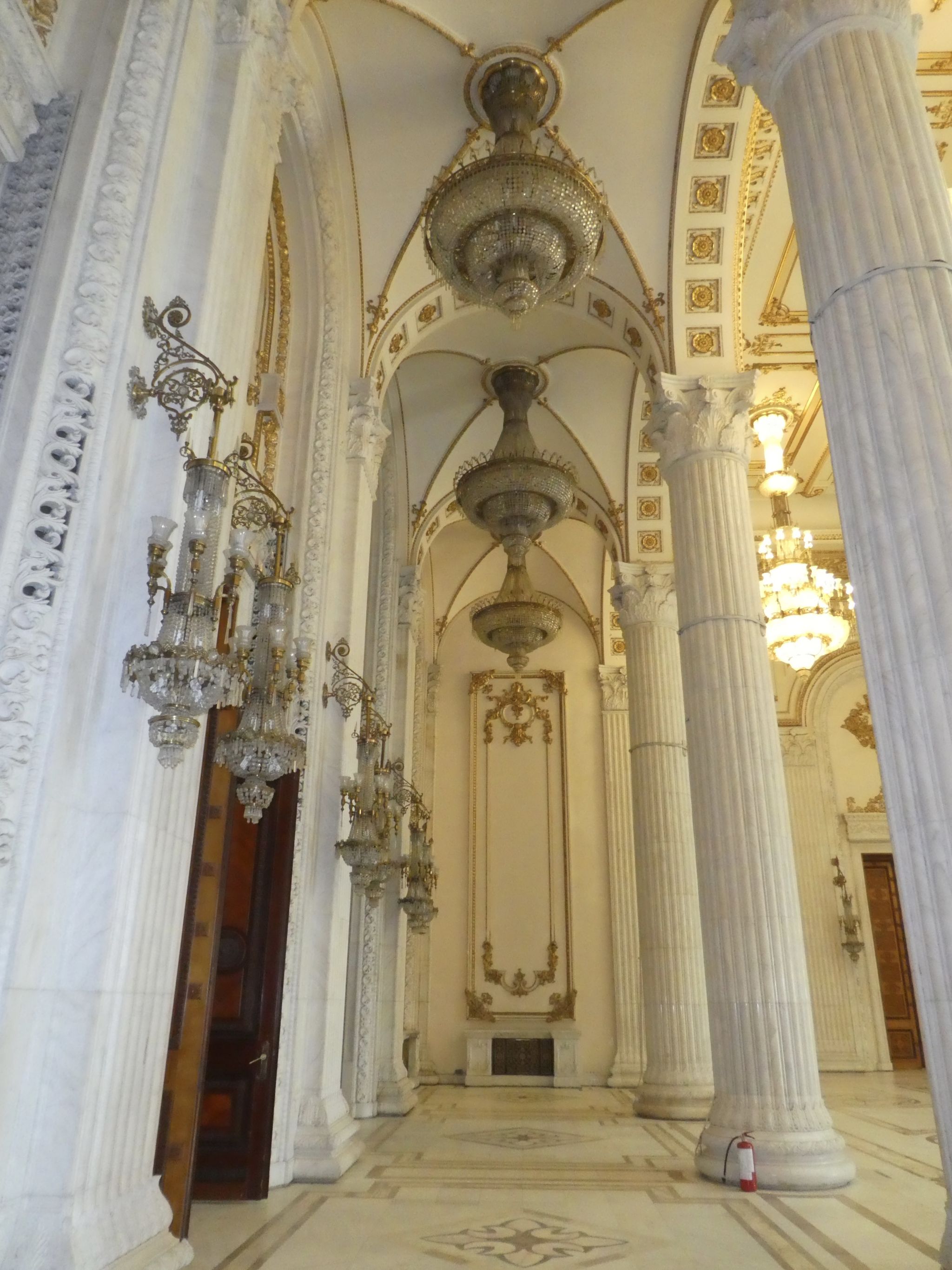 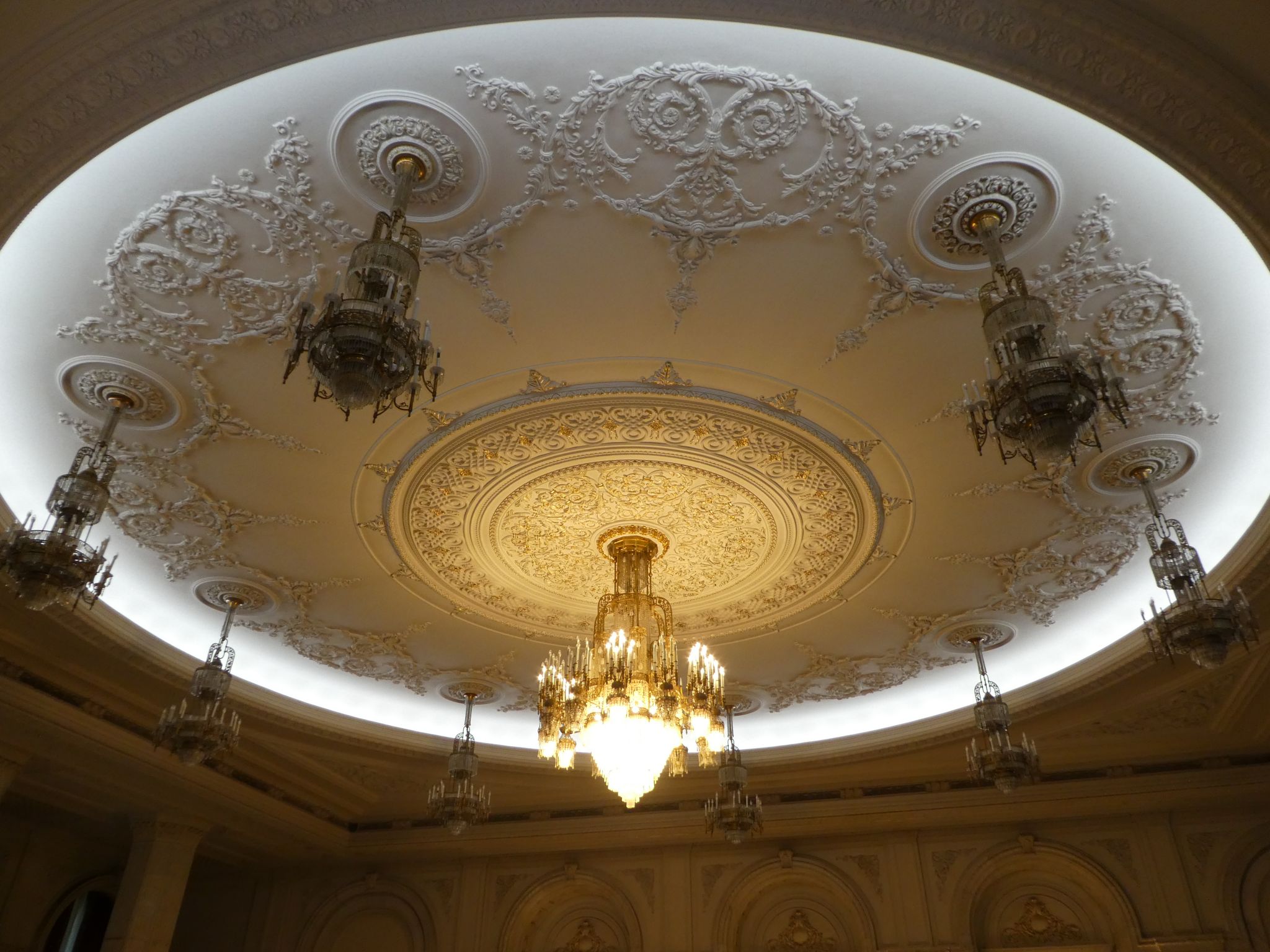 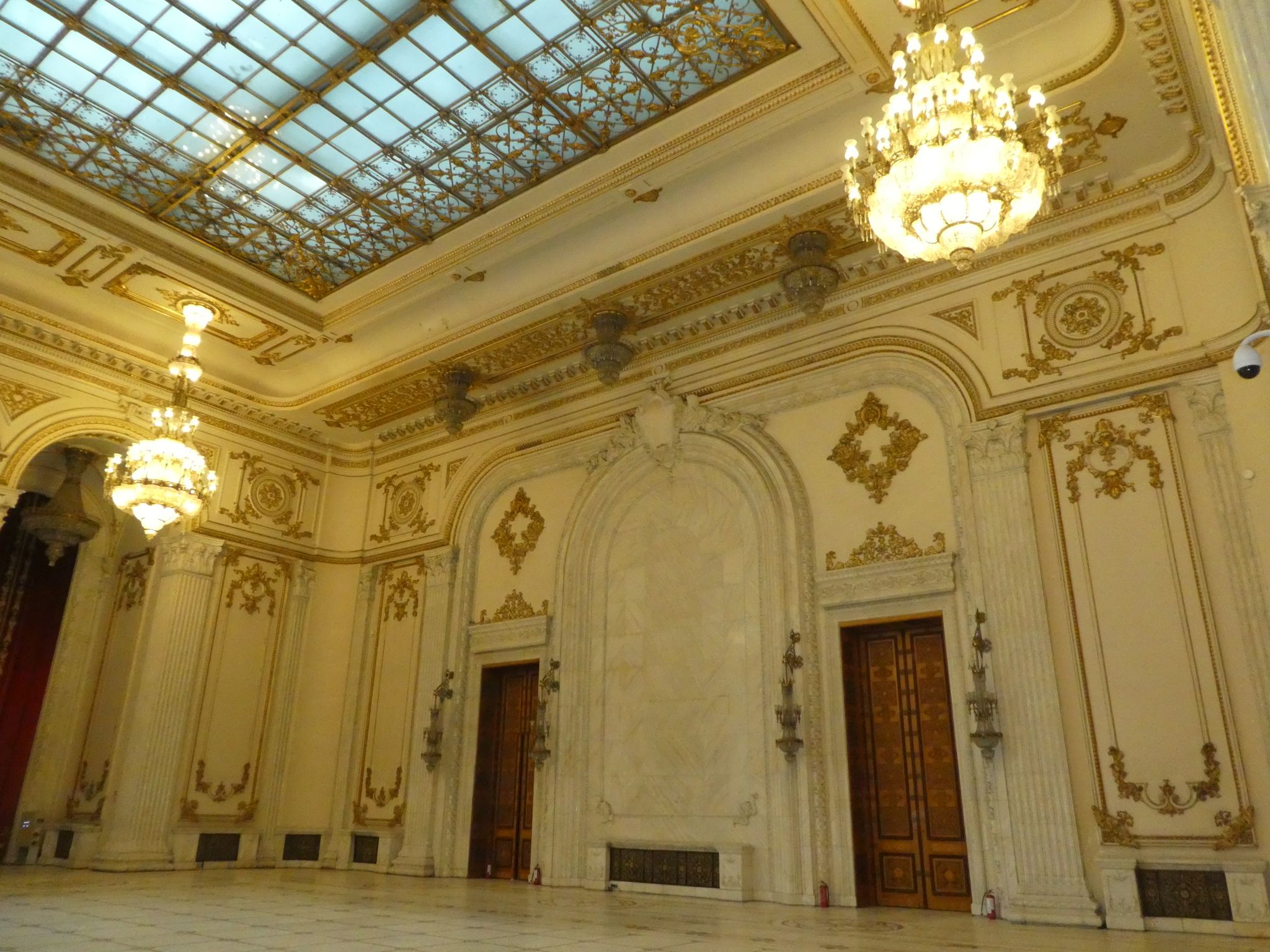 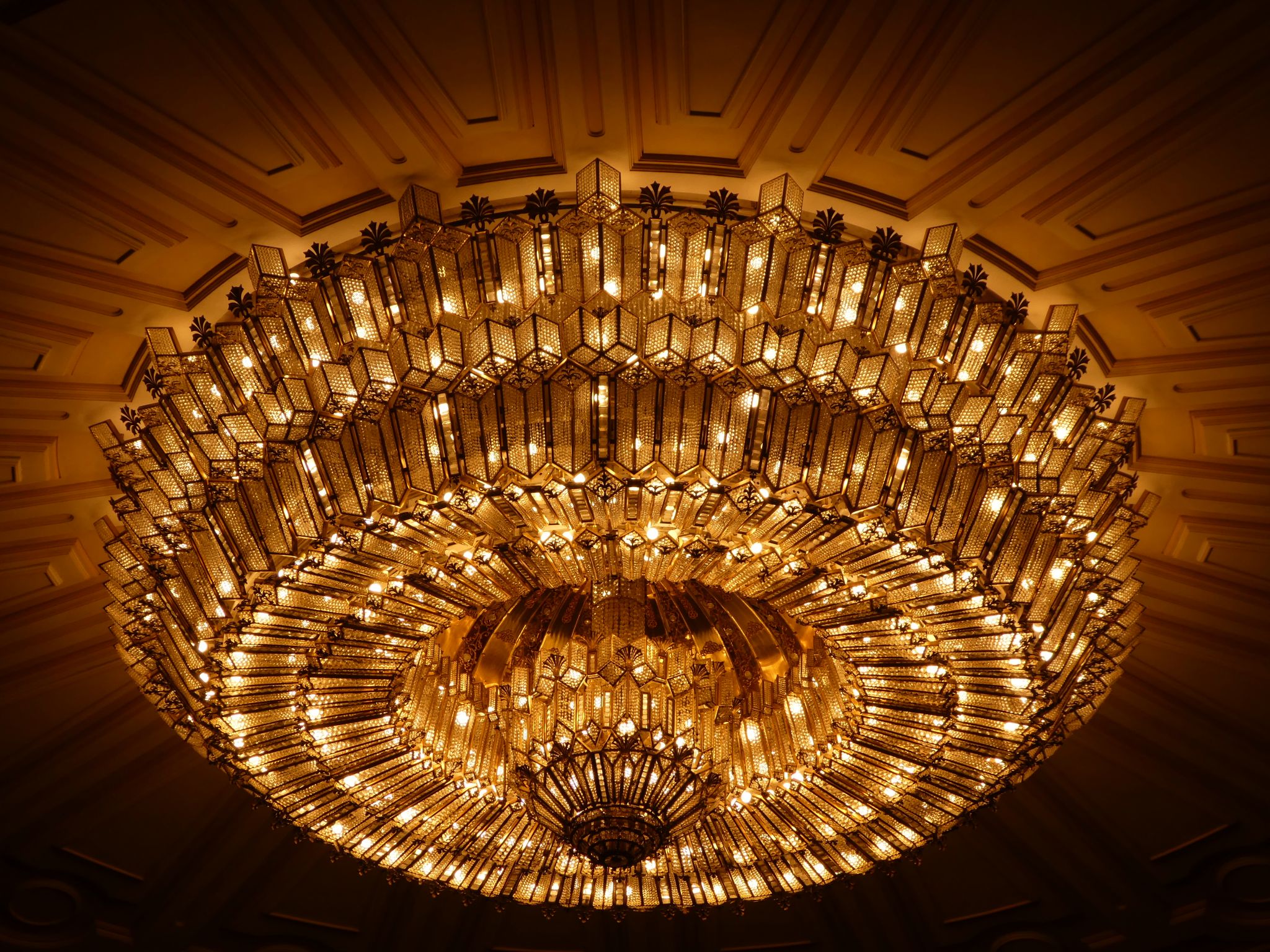 It is an outrage of epic proportions when you consider it was built at the same time as Ceausescu was enforcing an austerity regime on the general population.  Basics such as food and gas used for heating were rationed so severely that Romania’s infant mortality rate rose to the highest in Europe.

And the ultimate irony is that Ceausescu never got to live there, and indeed didn’t live to see it finished.  Sometimes the end comes suddenly for despots.

To see where it all came apart for Ceausescu, we visited Piati Revolutiei.

Amidst growing unrest across the country, Ceausescu gave what turned out to be his final speech from the balcony of the Central Committee of the Communist Party building here on 21 December 1989. 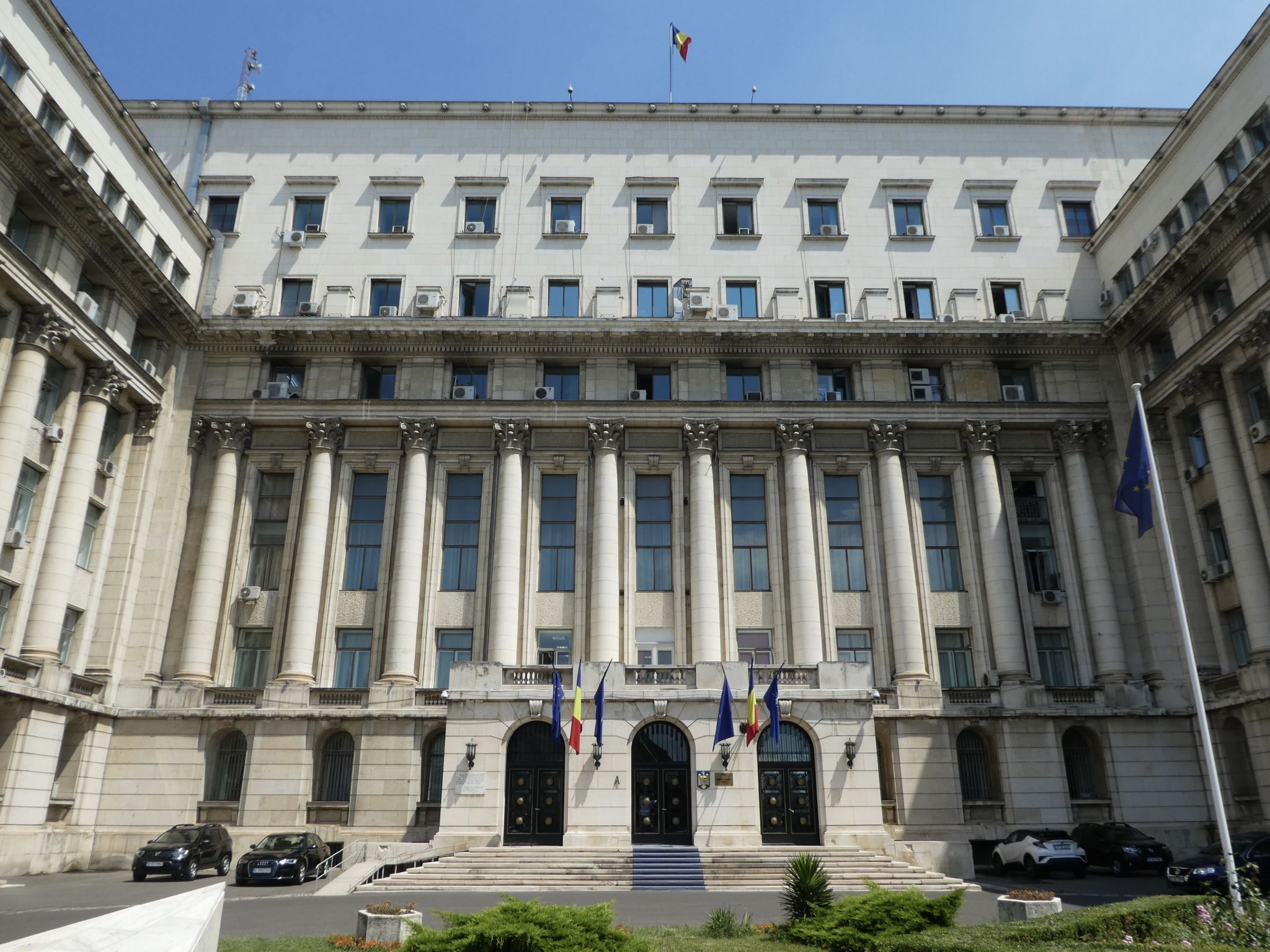 Workers had been trucked in and ordered to cheer enthusiastically for their leader as the speech was being broadcast live across the country.  Instead, as Ceausescu claimed anti-regime riots were being engineered by international forces, the crowd turned against him.  Before the live feed was cut, what the country saw was an emboldened protesting crowd, Ceausescu and his wife fleeing in panic, and security forces shooting demonstrators.

A low key memorial marks the area where many died. 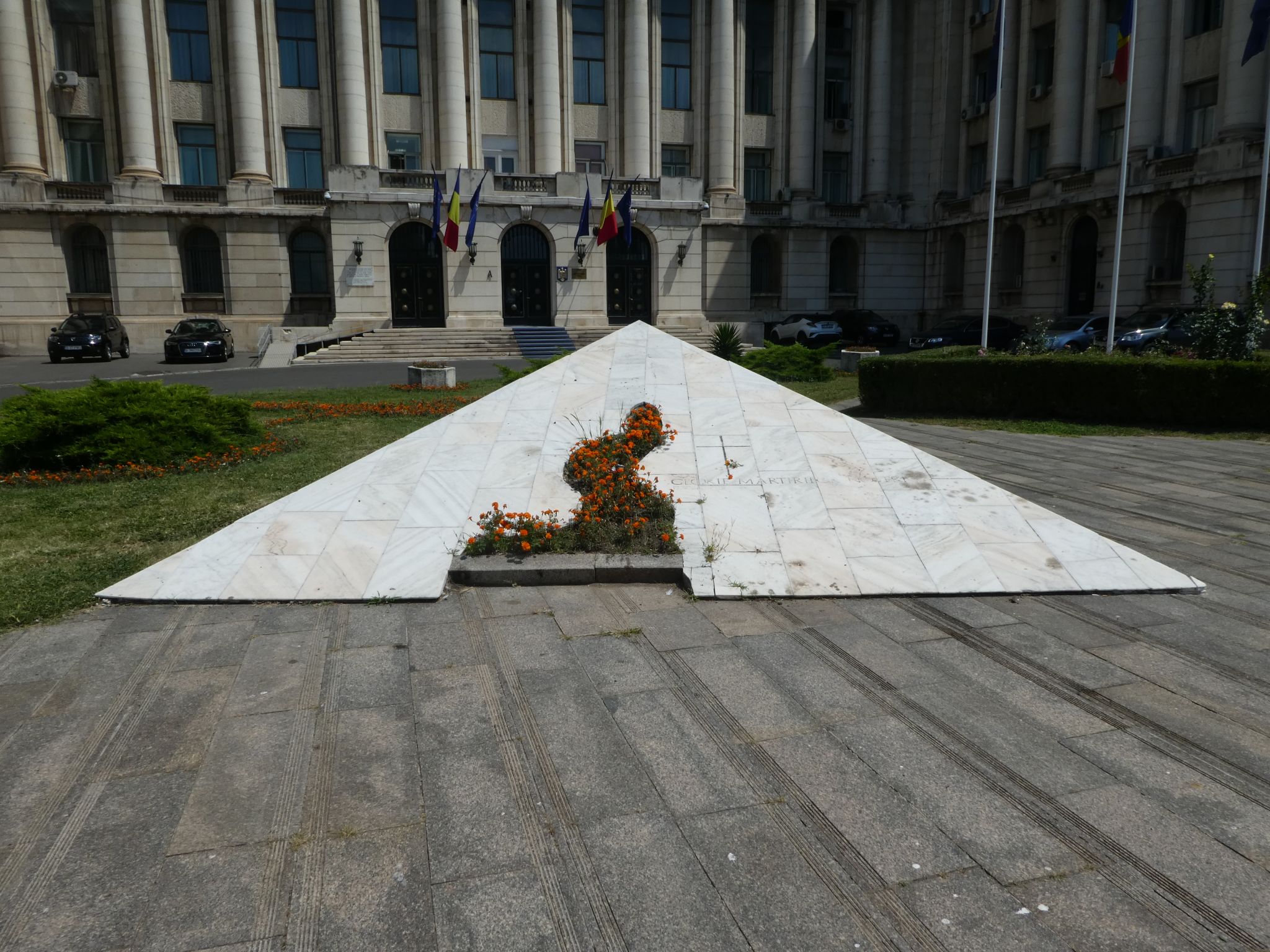 Ceausescu lost the support of the military, sealing his fate.  Within four days, he and his wife were detained, a show trial was convened at which both were convicted of genocide, damaging the economy and abuse of power, and on Christmas Day 1989 they were summarily executed.

Romania has been slow to outwardly address this period of its history.  Tours of the Palace of Parliament discuss the history of the building, and it is possible to visit the Ceausescus’ former residence.  But there is no museum in Bucharest dedicated to these years, and neither the history museum nor the military museum deal with the Ceausescu era. 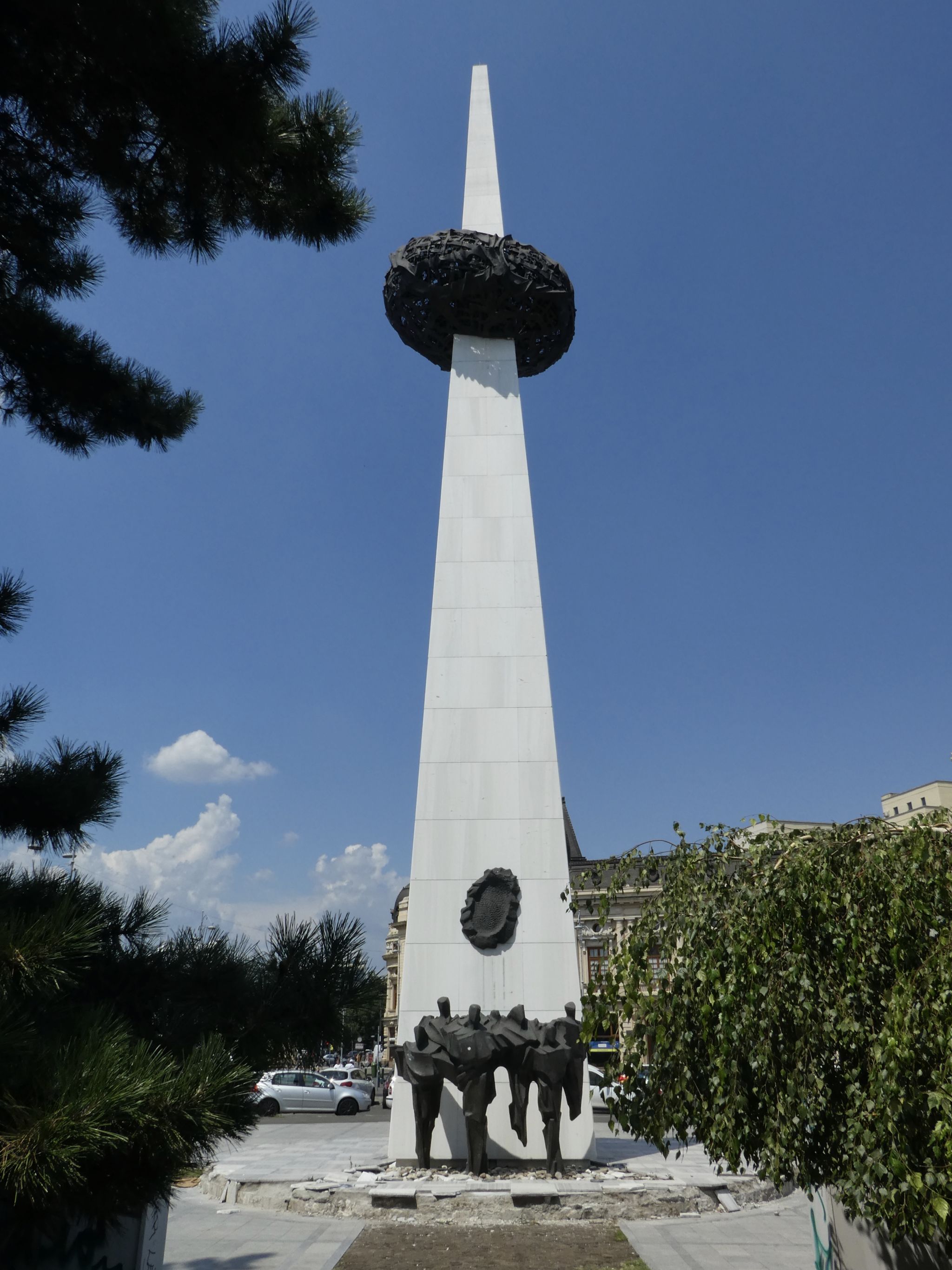 For a city that doesn’t get much press as a tourist centre, there’s actually a lot to see in Bucharest, even leaving the Ceausescu era to one side.

In the first few decades of the 20th century, the city was prosperous and many grand buildings and stately boulevards were constructed  in Parisian style.  WWII bombing, an earthquake in the 1970s and Ceausescu’s 1980s urban redevelopment mania of the 1980s destroyed much of it, but there’s quite a lot left. 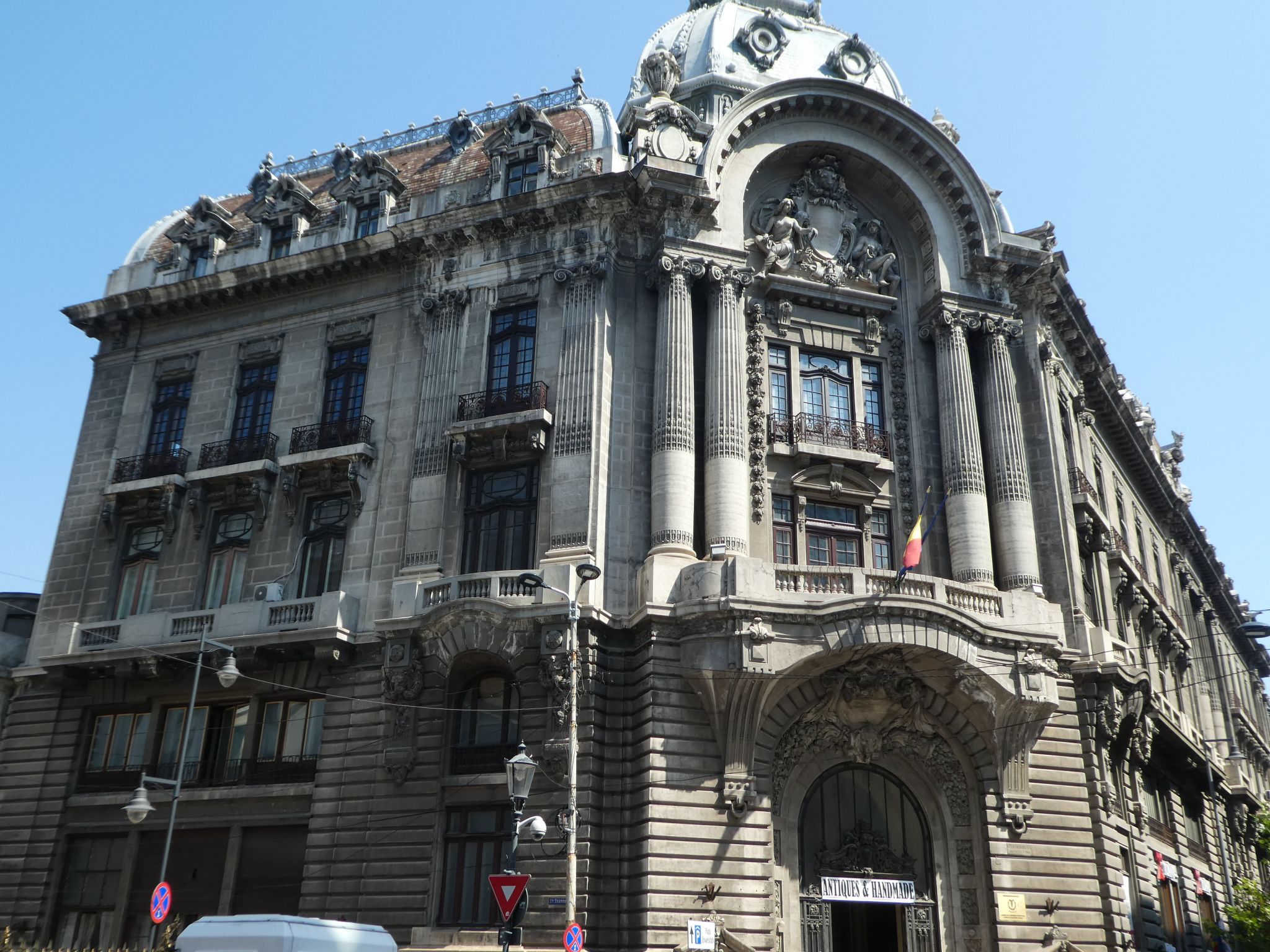 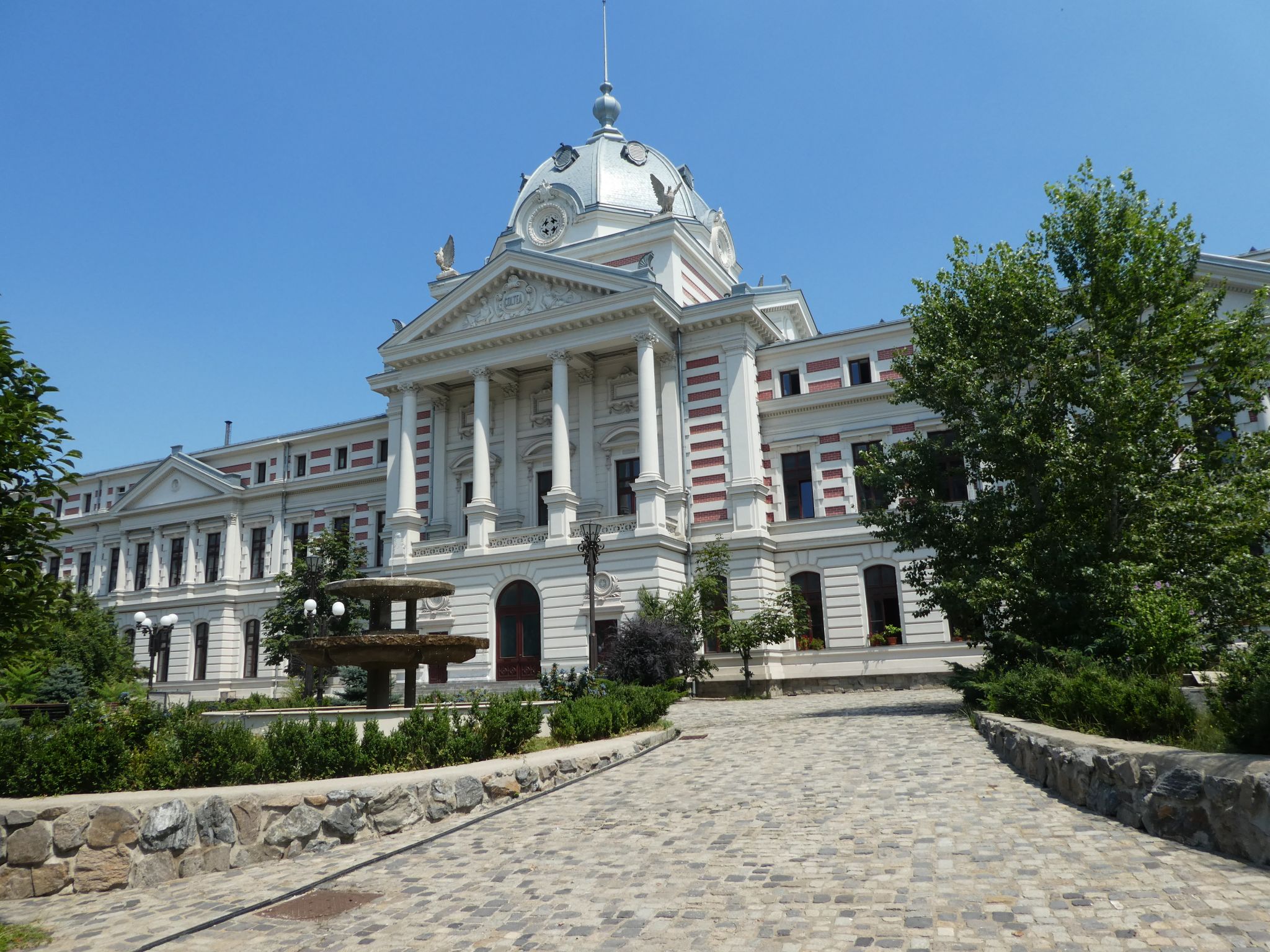 The Jewish population of Romania suffered greatly in the 1940s.  As a member of the Axis alliance, Romania was never invaded by Germany, but carried out its own program of ethnic cleansing, pogroms, deportation and mass murder, resulting in the death of almost 300,000 Romanian Jews.  Another 150,000 were sent to the death camps after Hungary occupied Northern Transylvania.

The Great Synagogue built in the 19th century survives and has been meticulously restored.  It contains a graphic exhibition on this period of history, and there is a memorial outside for the lives lost. 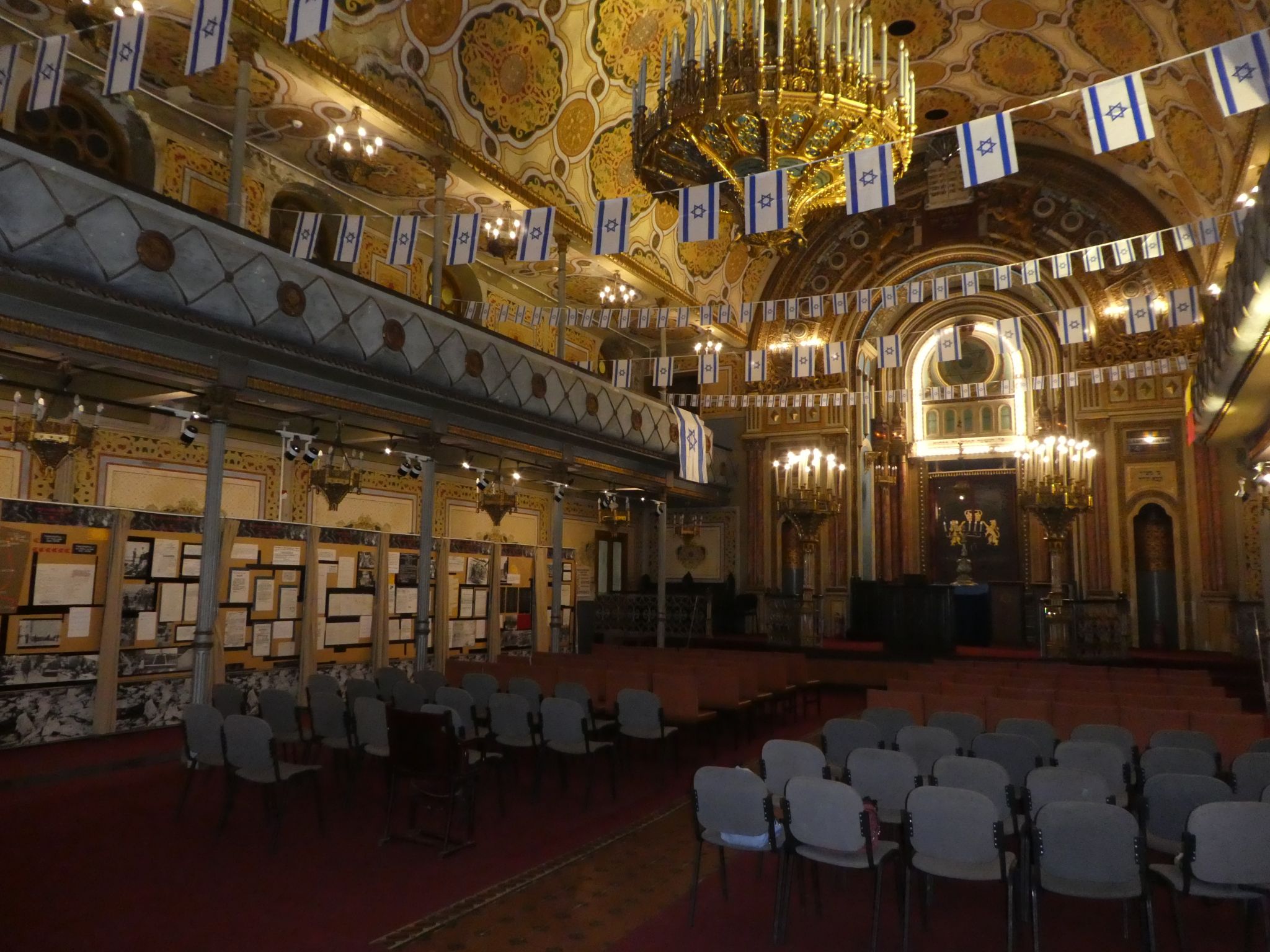 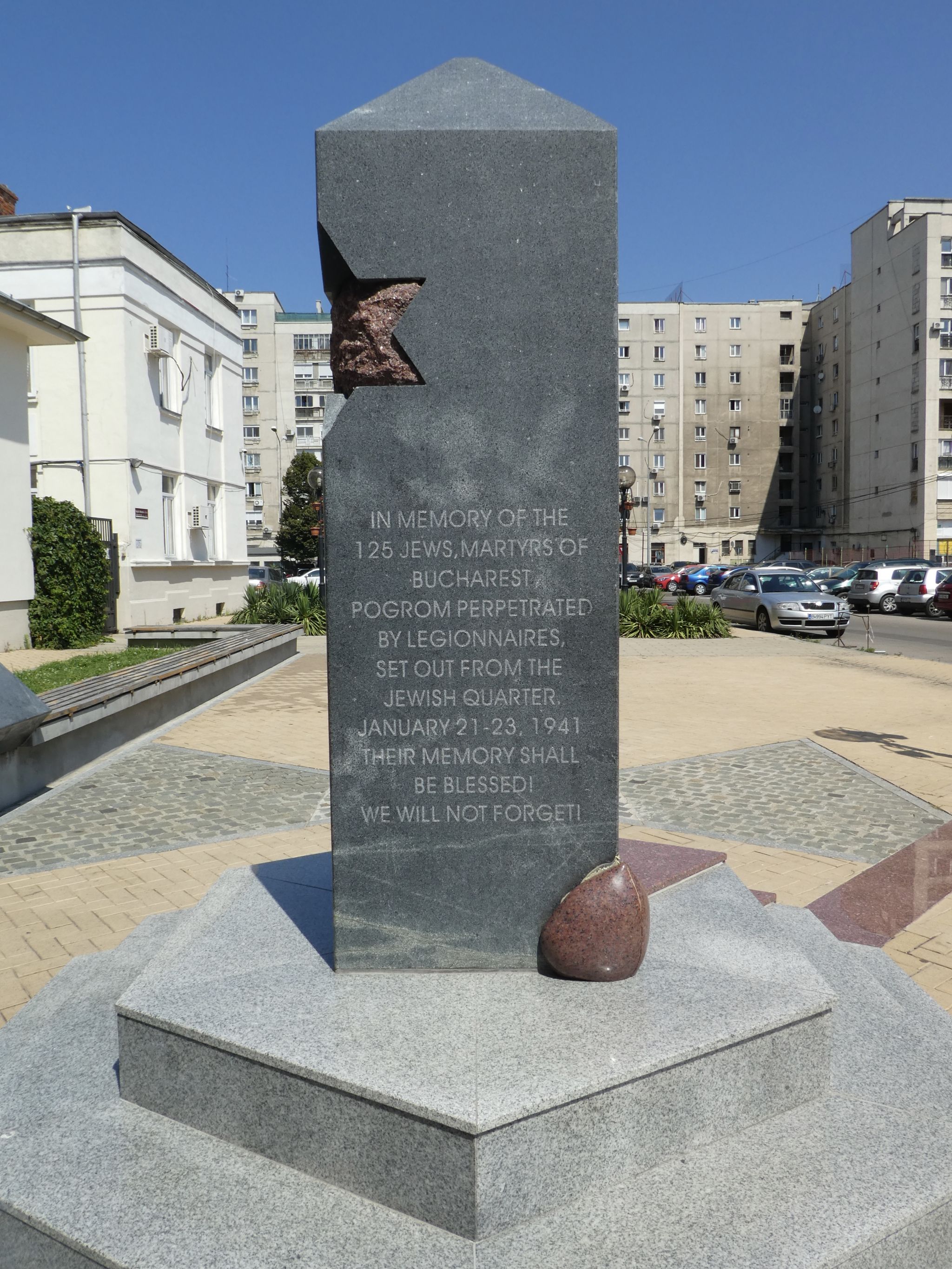 Nearby, the Choral Temple built in 1857 is the city’s main working synagogue.  The guide explained that the synagogue was built on a traditional Ashkenazi design, with seating on the ground floor in front of the altar for men and a balcony above with seating for the women.

Julie invoked the guide’s disdain by asking if they still practice gender-based segregation today.  They do.  ‘Because it’s traditional’.  Although these days the congregation has dwindled to a small number of mostly very elderly congregants and most of the ladies are unable to climb the stairs, so a section of seating on the ground floor has been separated with curtains for them to use, out of sight of the men.  You can just imagine those octagenarian/nonagenarian men couldn’t possibly focus on the service with the temptation of similarly aged women across the aisle. 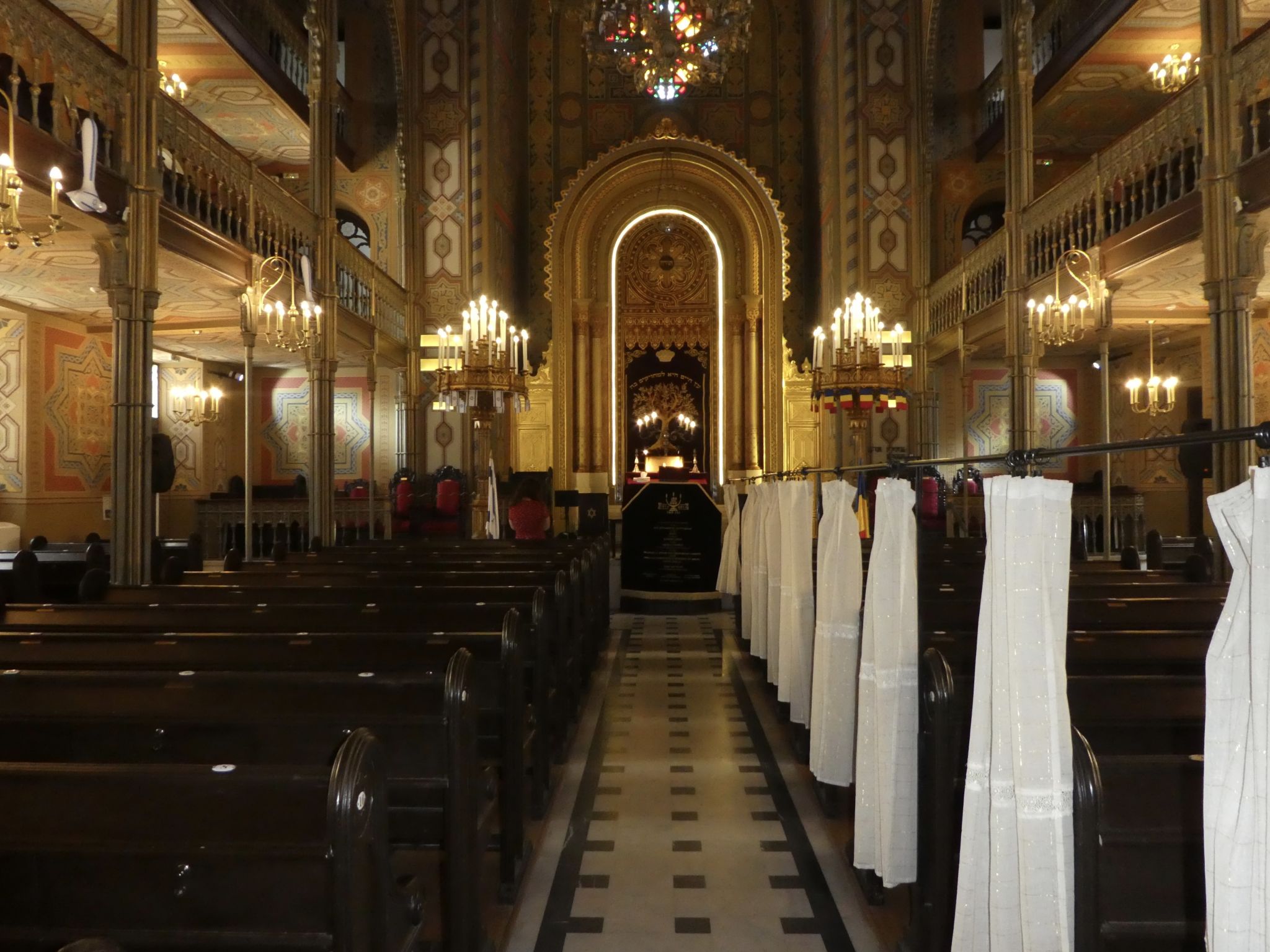 The theatre next door had some interesting artwork in its courtyard. 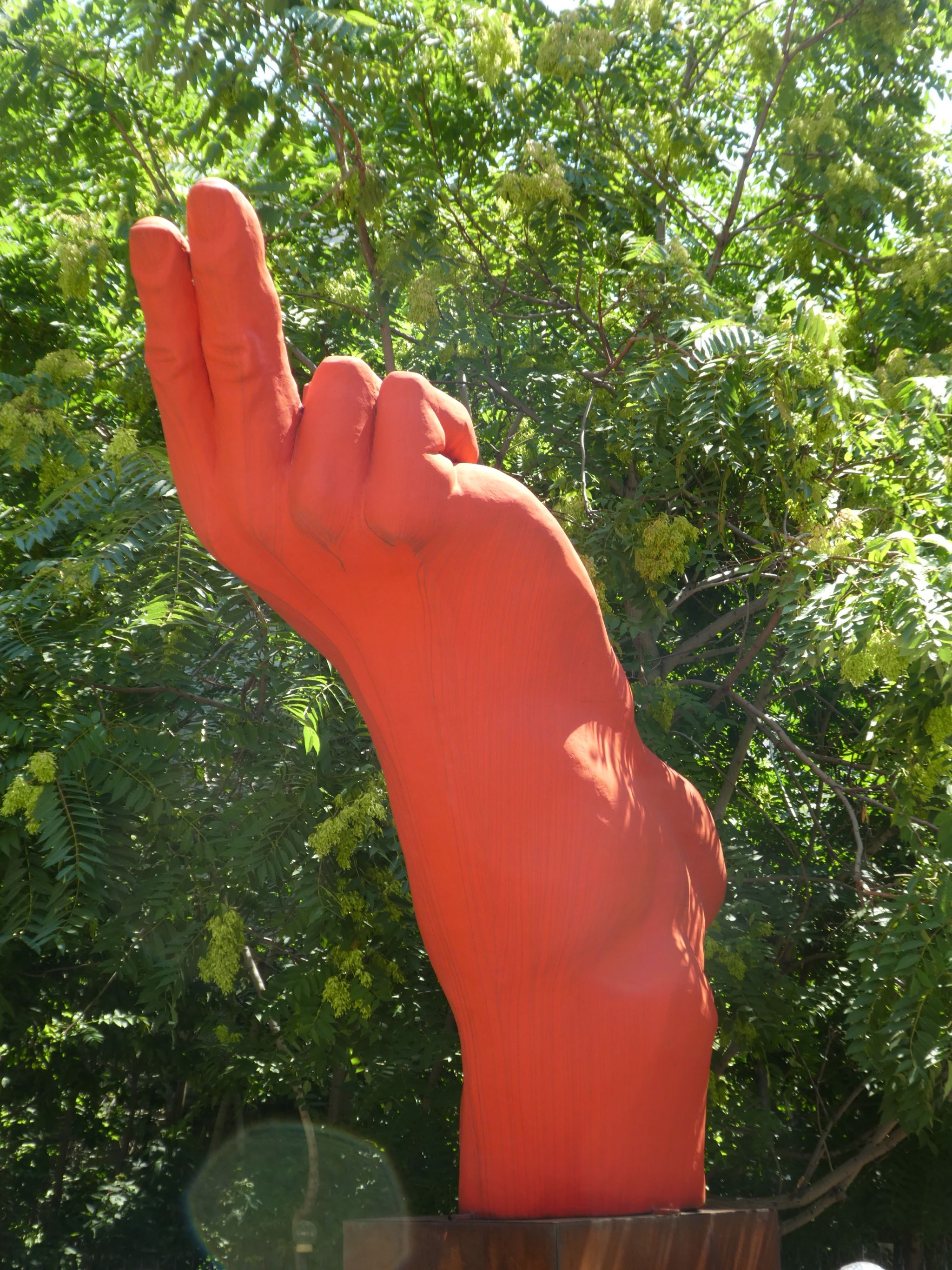 A few blocks away is the New St George’s Church – built in 1699, so not exactly new now.  The interior is almost entirely covered in meticulously maintained frescoes. 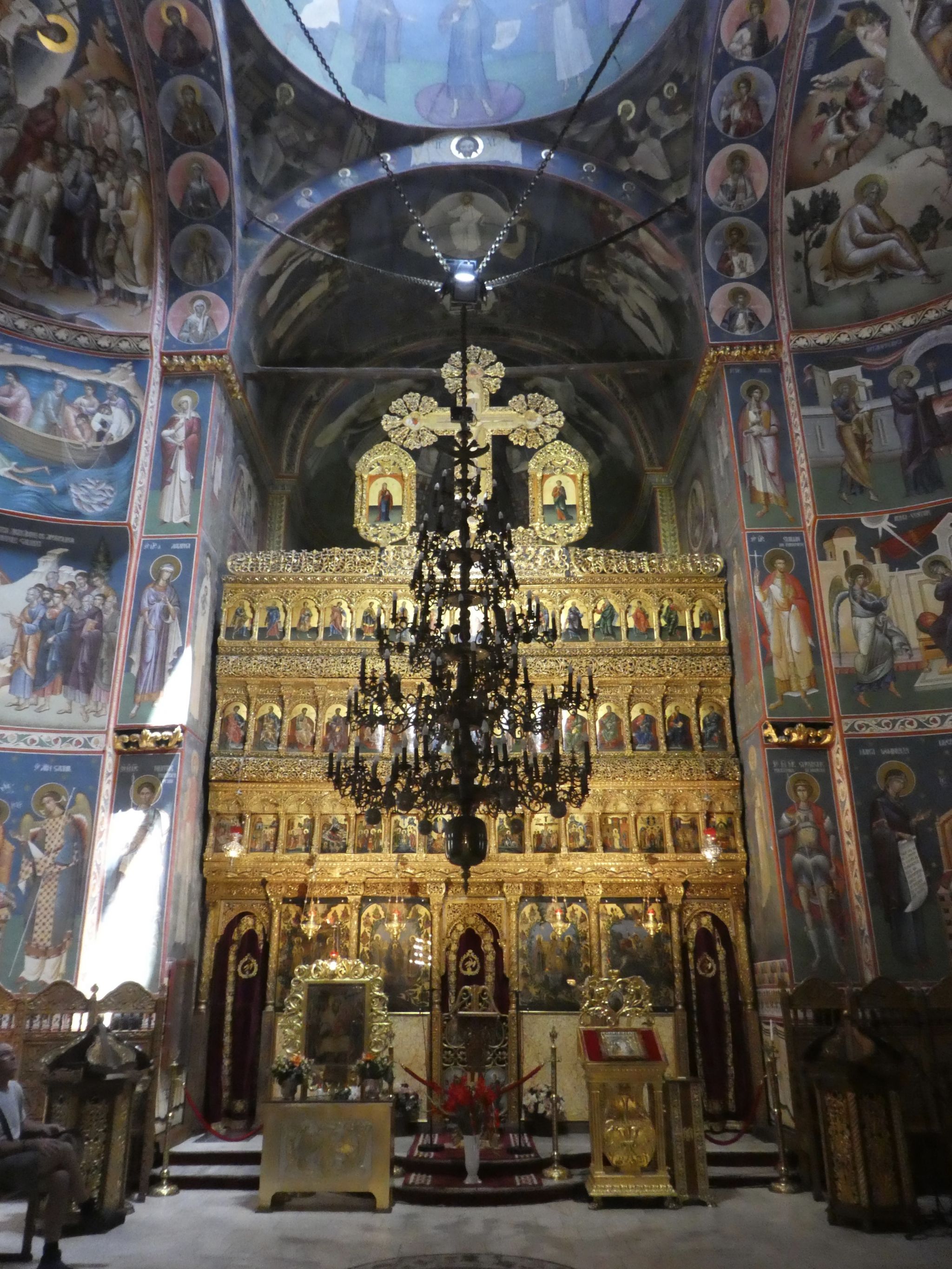 And the murals on the portico remind visitors what will happen to naughty people when they die. 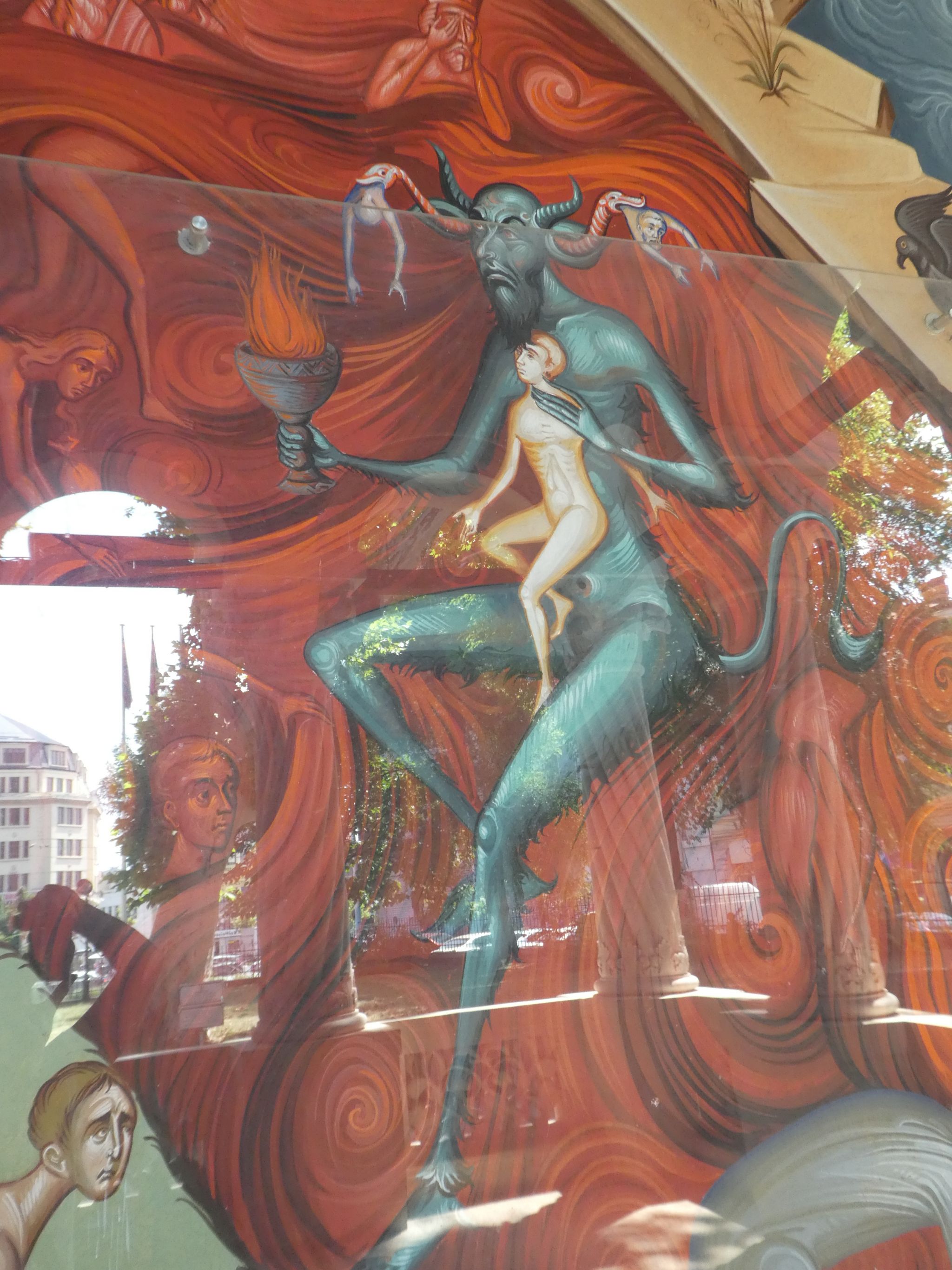 Such images would not have been out of place in the Romanian Museum of Kitsch, which we also visited.

According to its website, “kitsch is defined as art, objects, or design considered to be in poor taste because of excessive garnishments or sentimentality, but sometimes appreciated in an ironic or knowing way … The museum looks to promote Romanian Kitsch in the most tasteful way.  There is no good or bad taste, beauty is in the eye of the beholder”.

And there are some exhibits which definitely fit that definition. 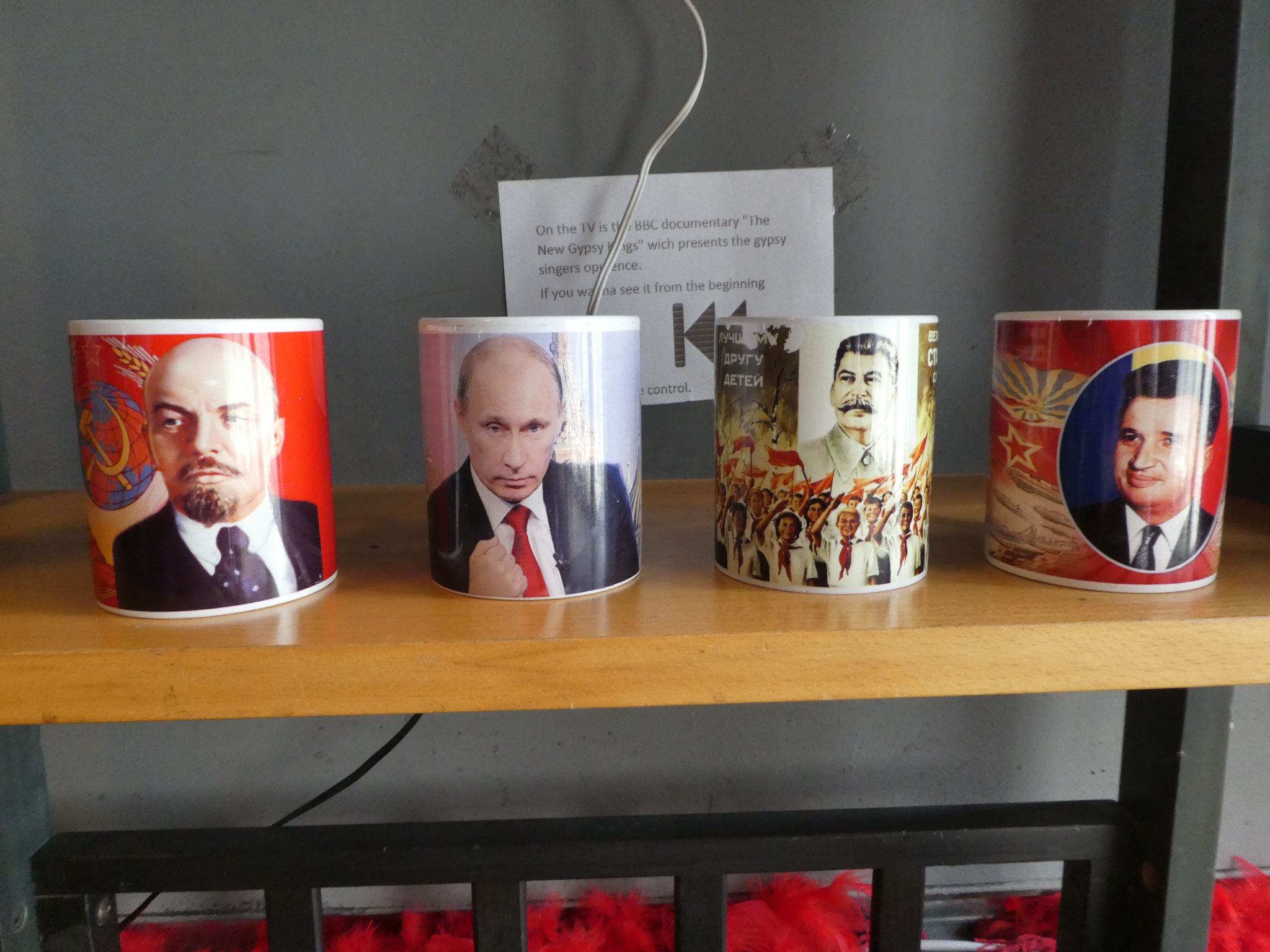 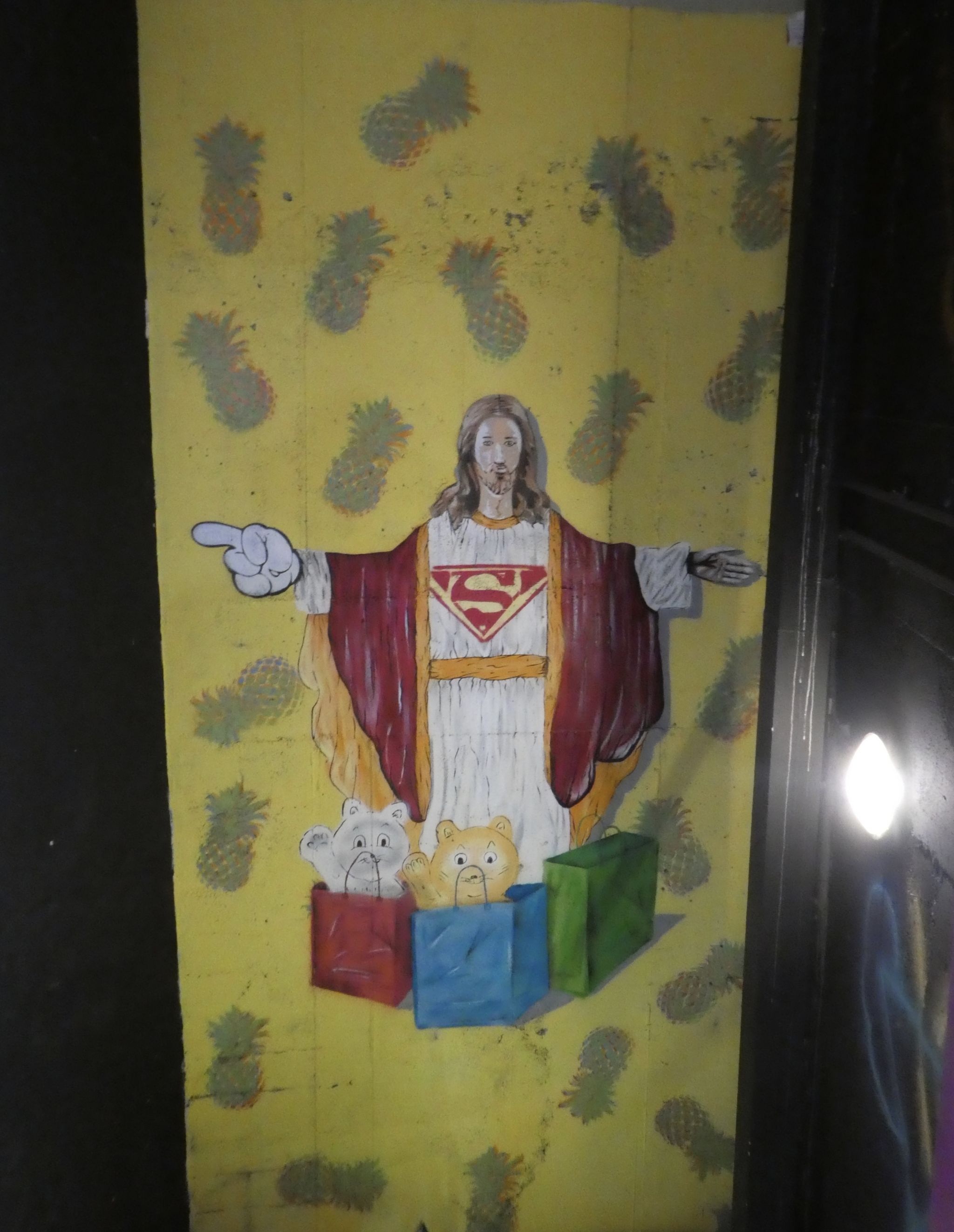 Others are JUST PLAIN WRONG! 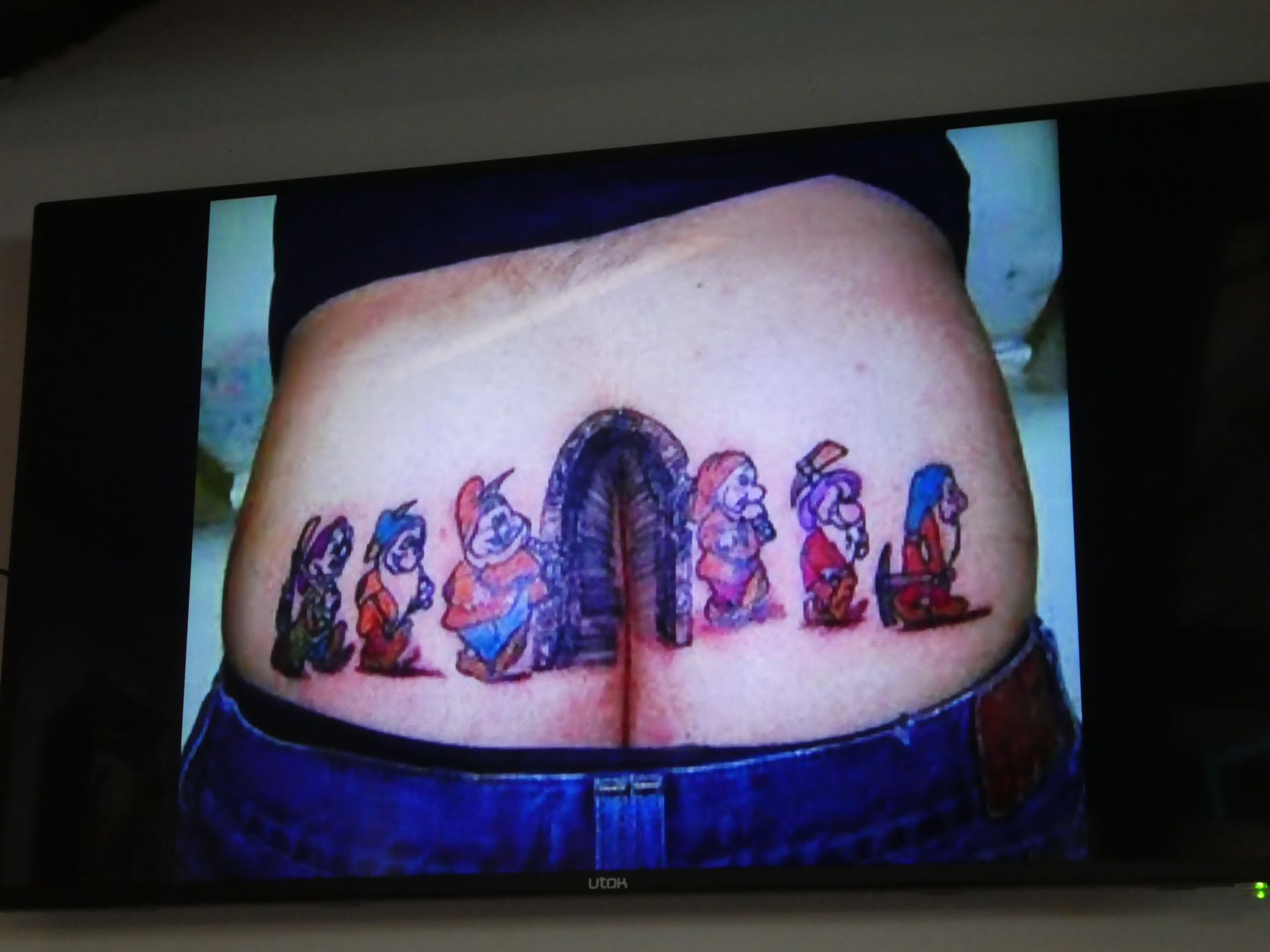 Bucharest was our last stop in Romania.

Romania is a land of contrasts.  Cities like Bucharest and Cluj Napoca – where we spent a few days between the village walk and the salt mine visit – are modern, albeit with historic hearts.  But you don’t have to go far out of town to find villages where horses and carts are still the most common form of transport, where mobile phones don’t work and farms are still worked using traditional methods.  Maybe this image from the Kitsch Museum summed it up best. 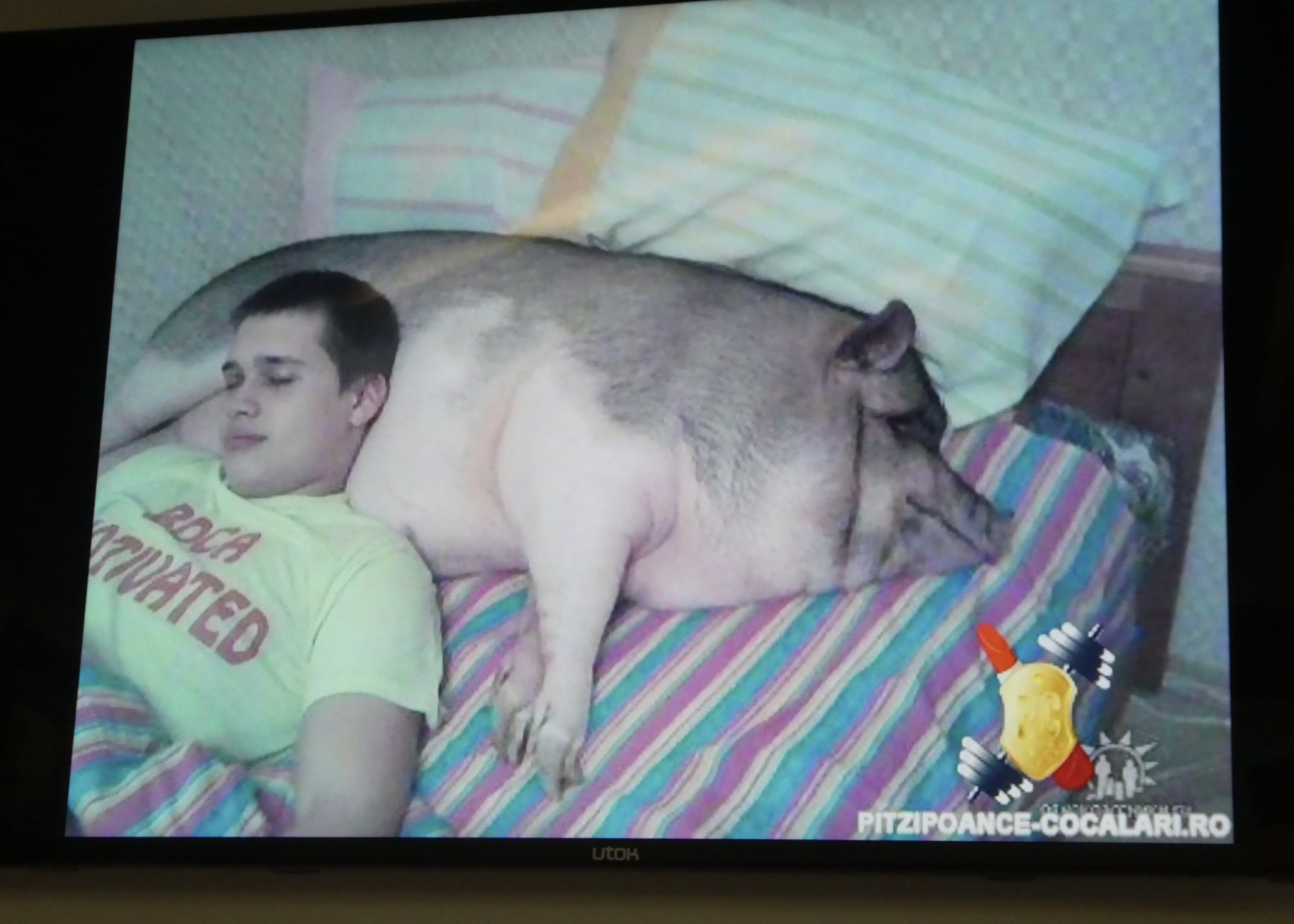