Bologna’s most recognisable landmark and the symbol of the city, is the site of the twin towers, Torre degli Asinelli and Torre Garisenda.  There were once more than 100 towers like these throughout the city.  They were built from around the 1100s as defensive lookouts, funded by families who competed to show off their wealth by the height of their tower.  Only 20 survive, and these two are the most central.

Shorter, more squat Torre Garisenda is 47 metres high but tilts a worrying 3.2 metres bottom to top due to land subsidence in the 1400s. 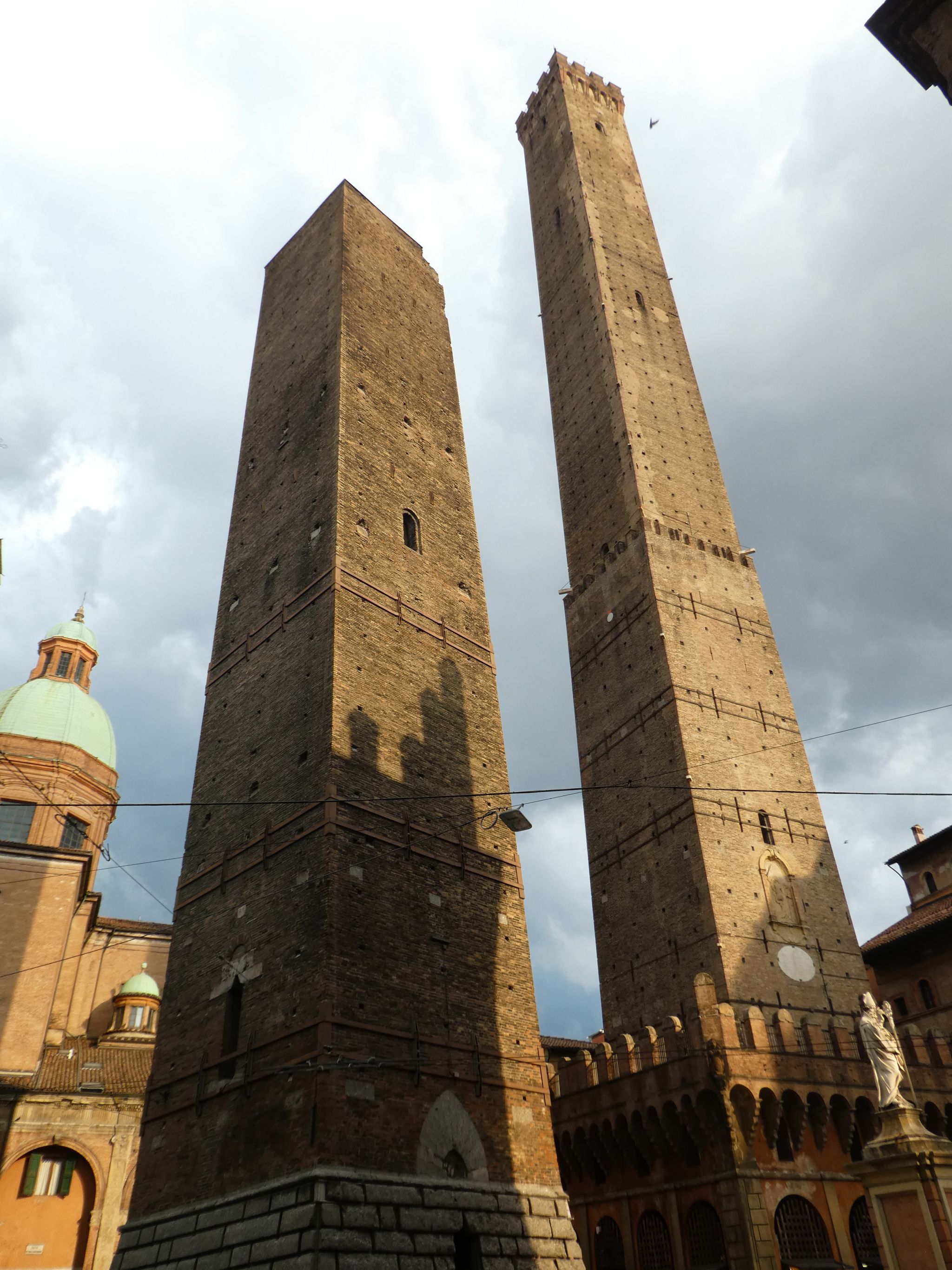 The towers are at what was once the entry point of the city.  Today the whole area is still a maze of cobblestone streets, hidden piazzas, dead end lanes and gracefully ageing old buildings, predominantly in stone which glows red in the sun. 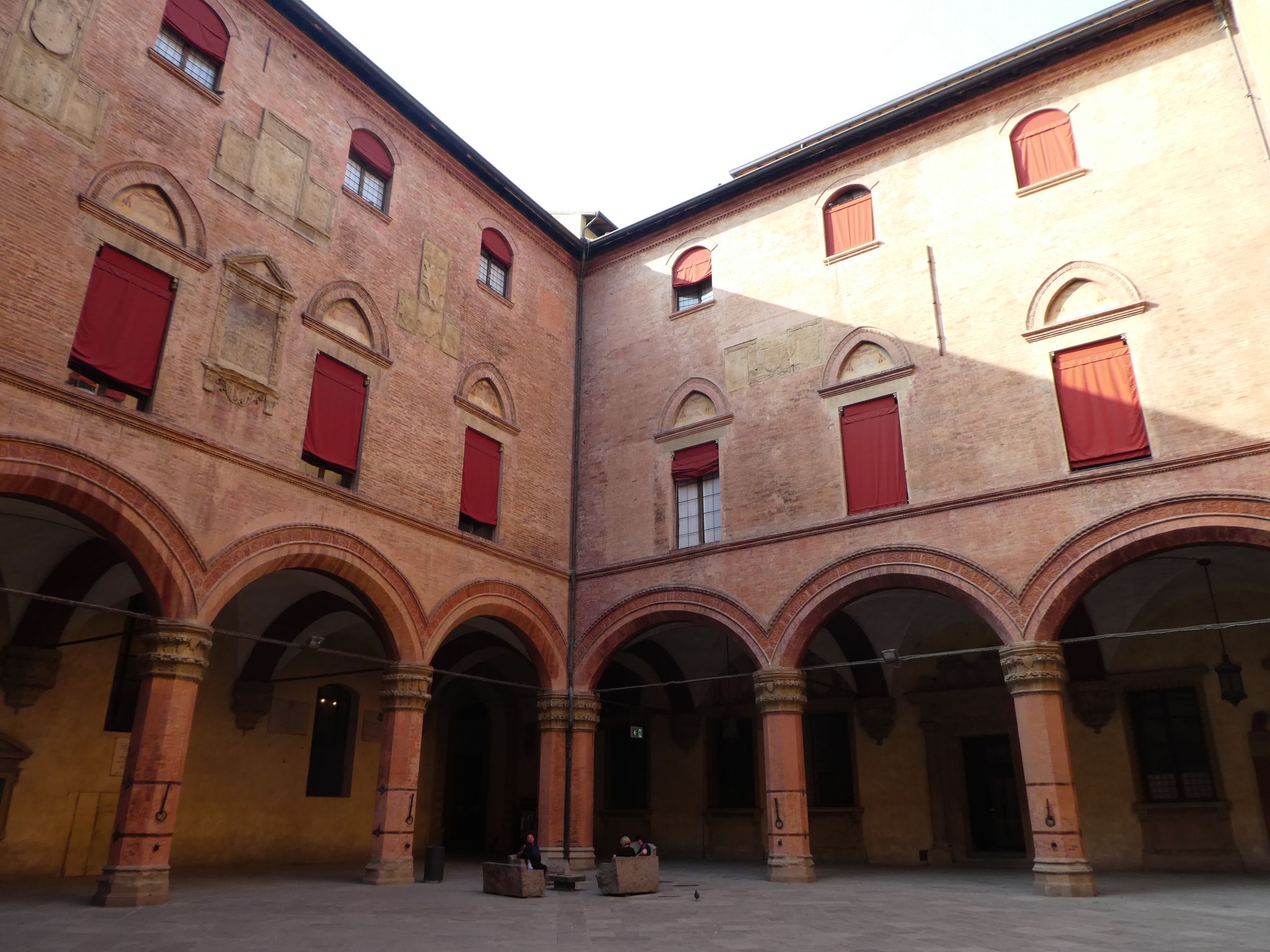 The heart of the old city is Piazza Maggiore with magestic buildings on all sides. 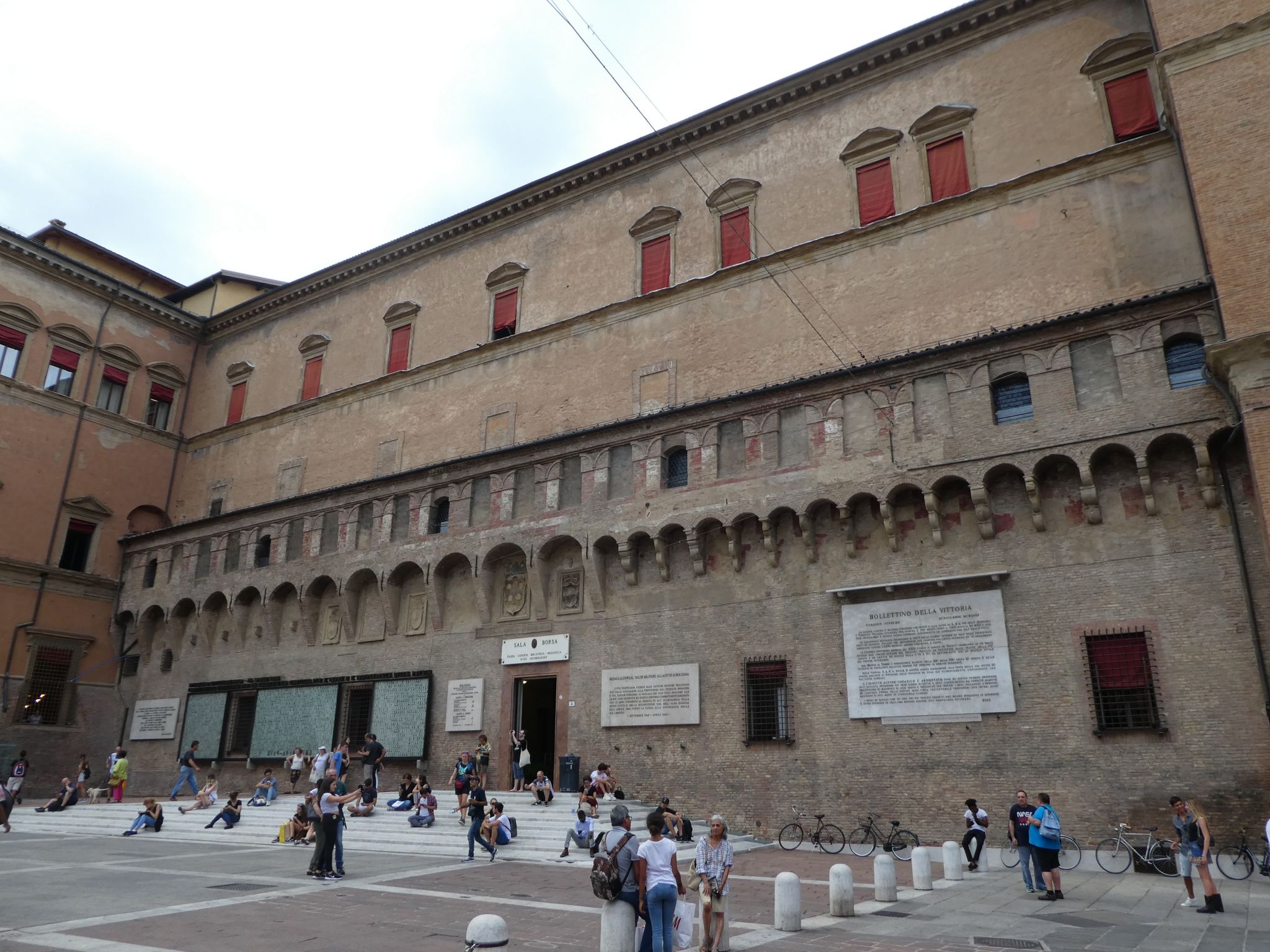 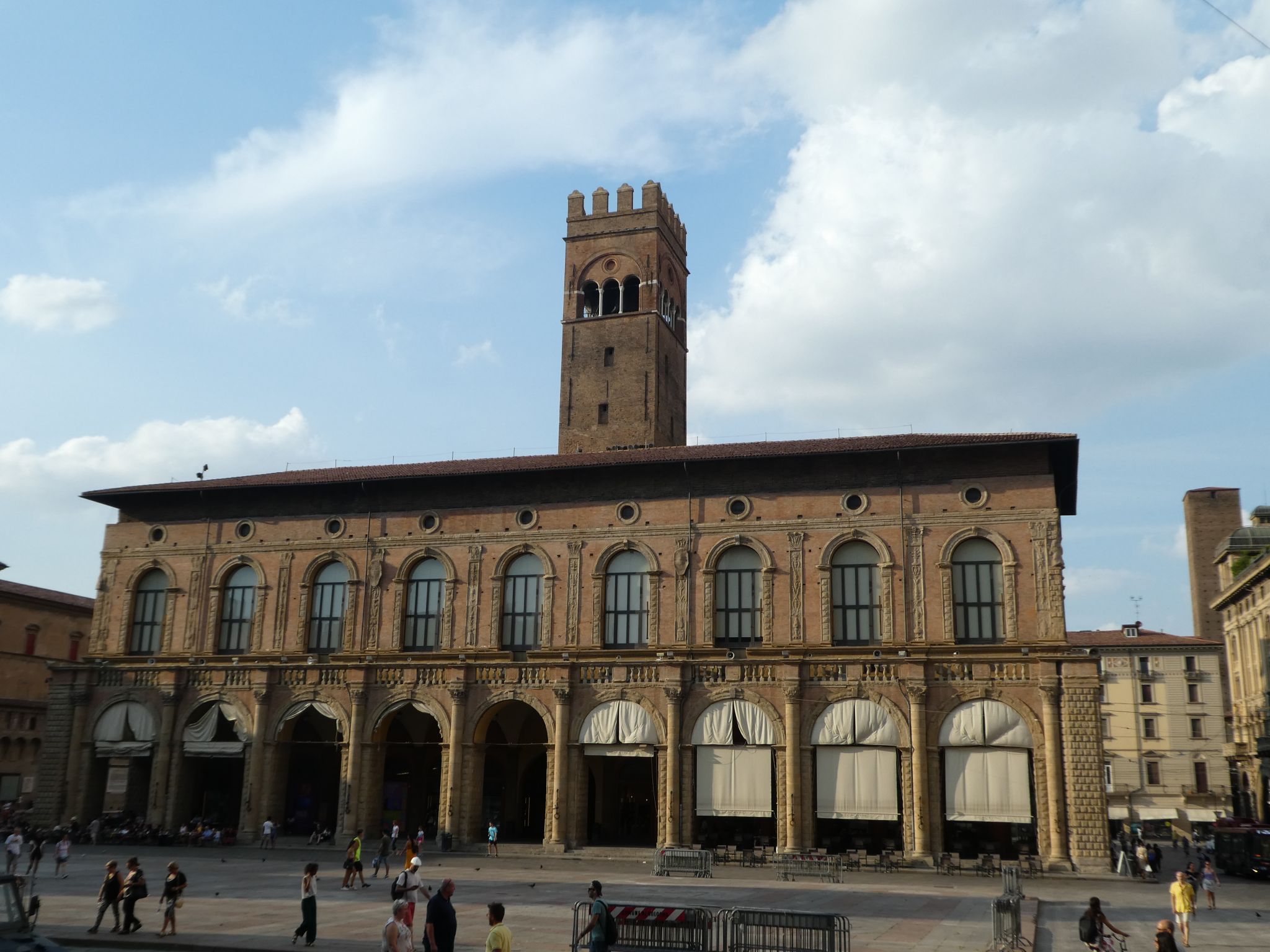 Dominating the piazza is the massive Cathedral di San Petronio, the sixth largest church in Europe.  It was originally planned to be bigger than St Peter’s in Rome.  Pope Pius IV put an end to those ambitions by commissioning a new university over a large section of the site.  Just reminding everyone who’s really the boss. 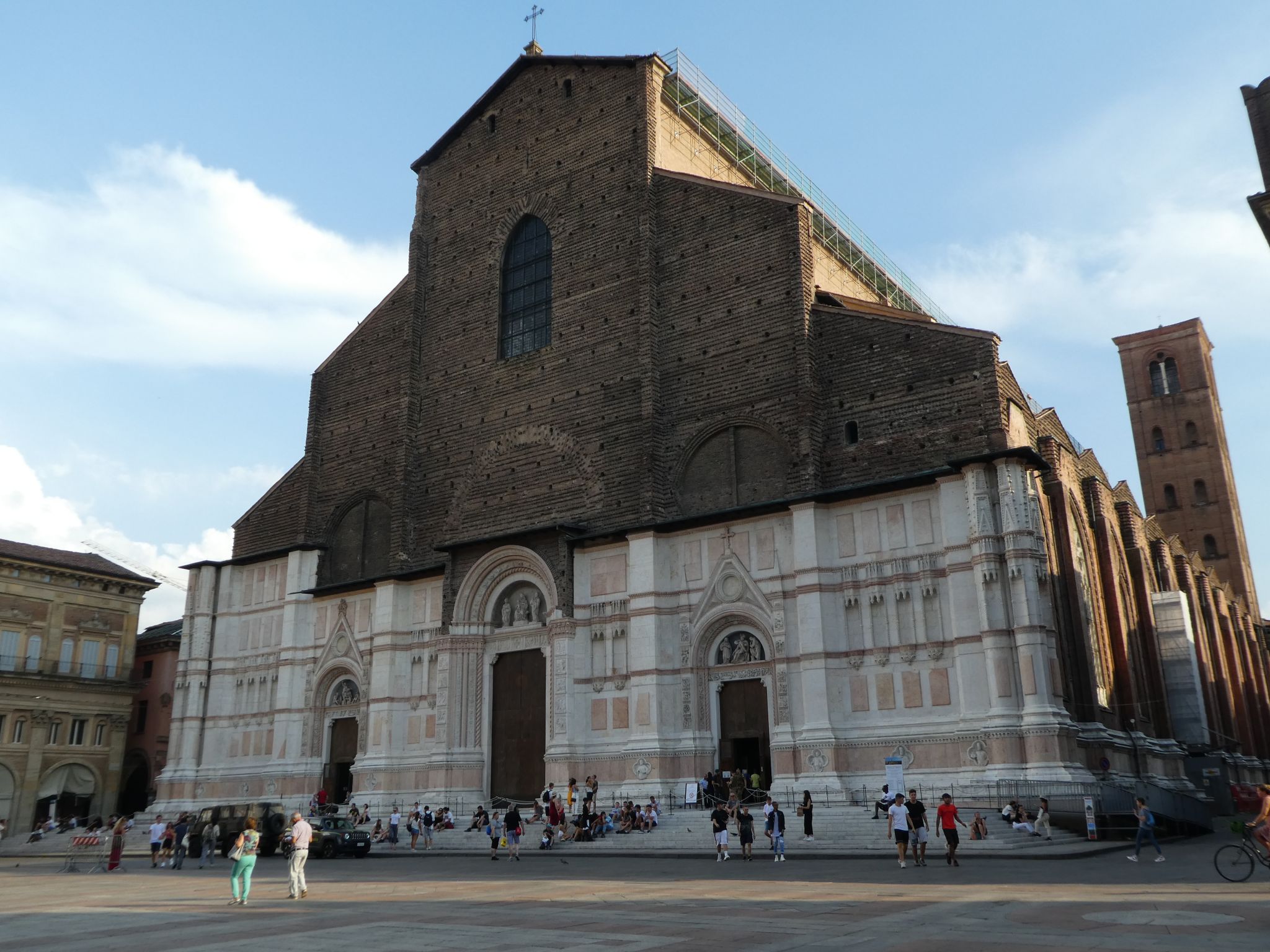 In the area enclosed by the 13th century city walls, nearly 40kms of porticoes line many of the major streets and square.  Once, most northern Italian cities had porticoes.  Few remain, making those in Bologna so unique they have been nominated for UNESCO listing. 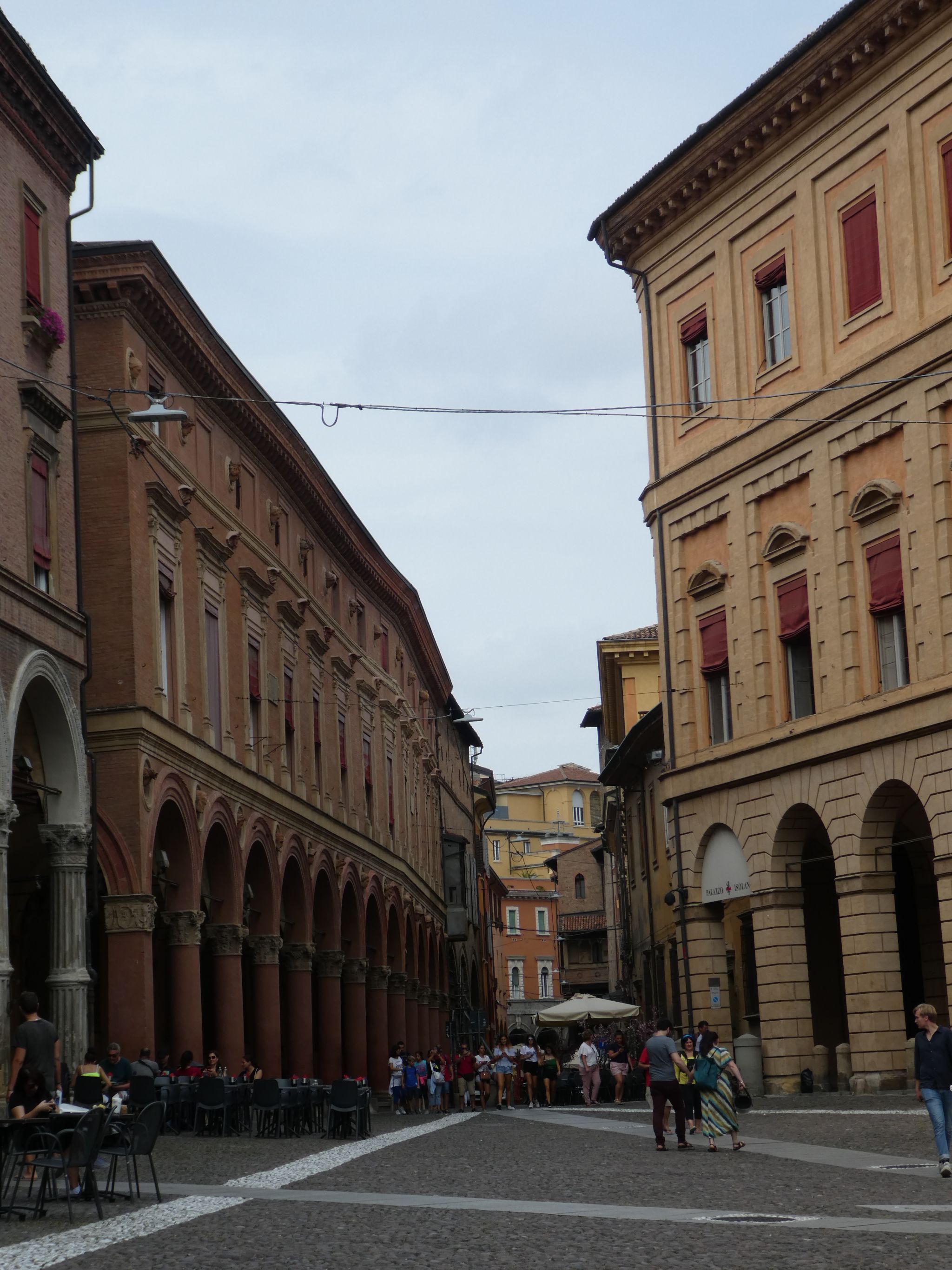 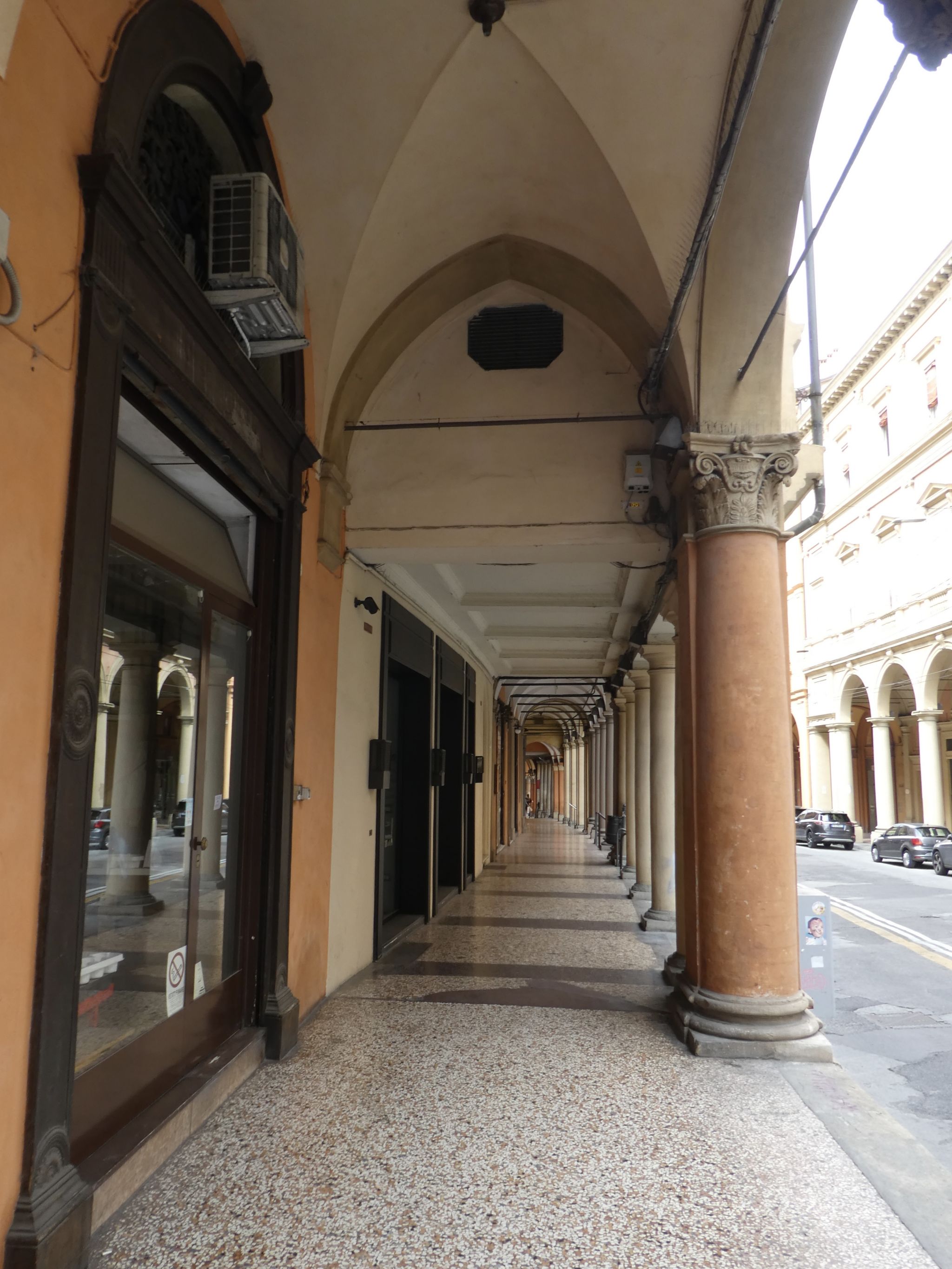 On a hilltop overlooking the city, the Sanctuary of Madonna di San Luca contains an image of the Madonna and Child supposedly painted by St Luke in the 12th century. 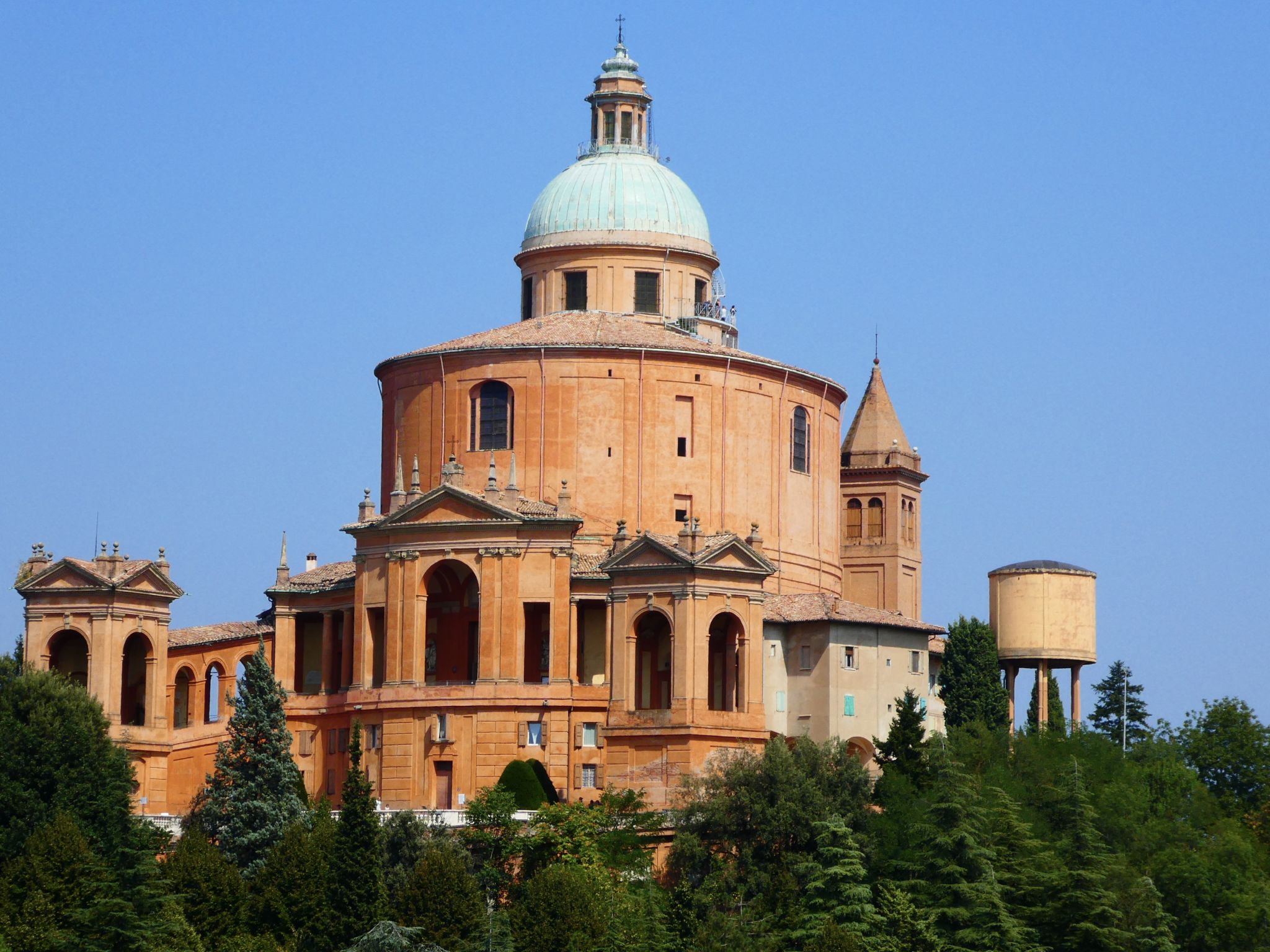 It is said that in 1433, Bologna experienced three months continuous rain which threatened to destroy the harvest.  Praying for a miracle, the citizens brought the Madonna from the Sanctuary down to a cathedral in the city.  It is claimed that as she was carried down the hill, trees bent over to form a canopy over her head.  And of course the rain stopped and the harvest was saved.

In celebration of the miracle, the event is replicated in a procession every May.  And in the late 1600s, a portico was built all the way from the Sanctuary to the city, so the Madonna never has to again brave the weather.  At 3.8km, the 666 arch portico is the longest in the world.  And a very pleasant walk back to town. 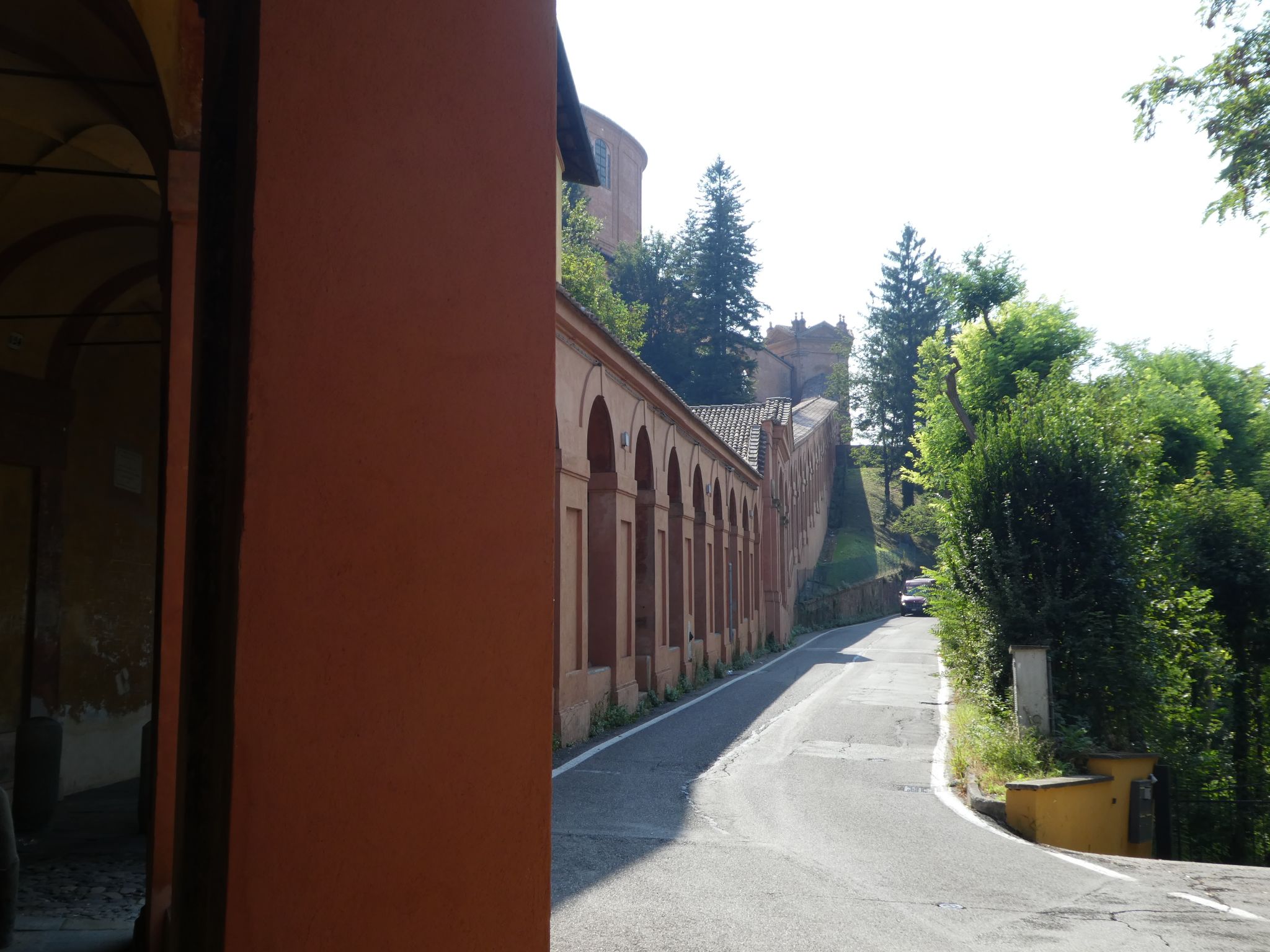 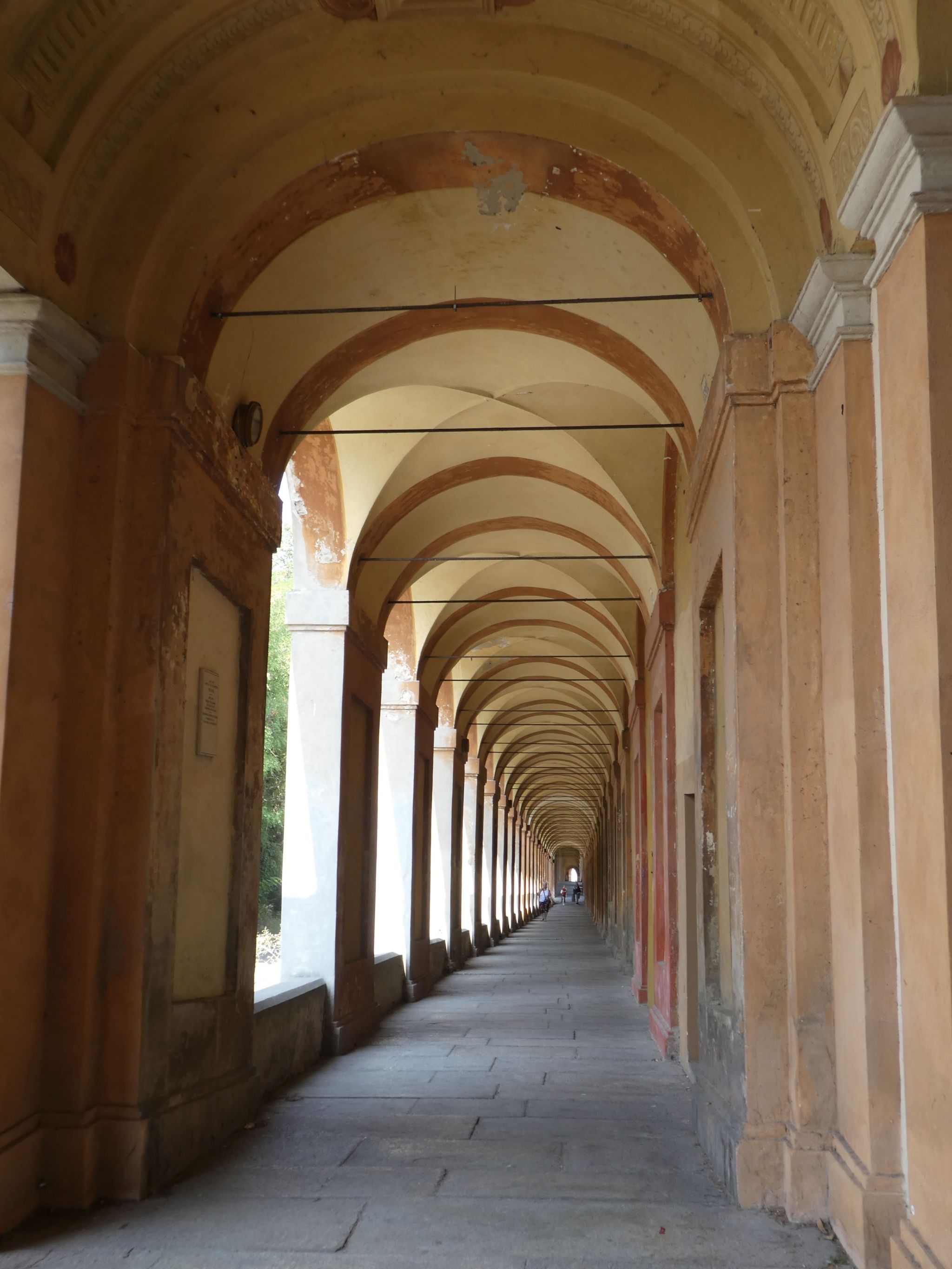 Bologna’s nickname is La Grassa (“the fat one”), a celebration of its fabulous food heritage.  It’s one of the major historical cities in the Po Valley, Italy’s richest agricultural area and the home of Parma prosciutto, parmigiano reggiano (parmesan cheese) and balsamic vinegar.

Bologna is well known, of course, as the birthplace of bolognese sauce – a rich ragu of veal, pork and beef mince.  It is unctuous from the quality of the meat, contains minimal or no tomato, and is served always with tagliatelle.  It is nothing like the tomato-heavy versions to be found around the world.  And it’s never, ever served with spaghetti, which is a southern pasta.  Indeed, if you see ‘spaghetti bolognese’ on a menu in Bologna, give the establishment a miss – it’s almost certainly a tourist joint.

In the centre of Bologna’s historical area is the Quadrilatero, a district full of produce stalls, providores and gourmet delis stuffed full of delectable cured meats, cheeses, handmade pasta, chocolates and, of course, gelato. 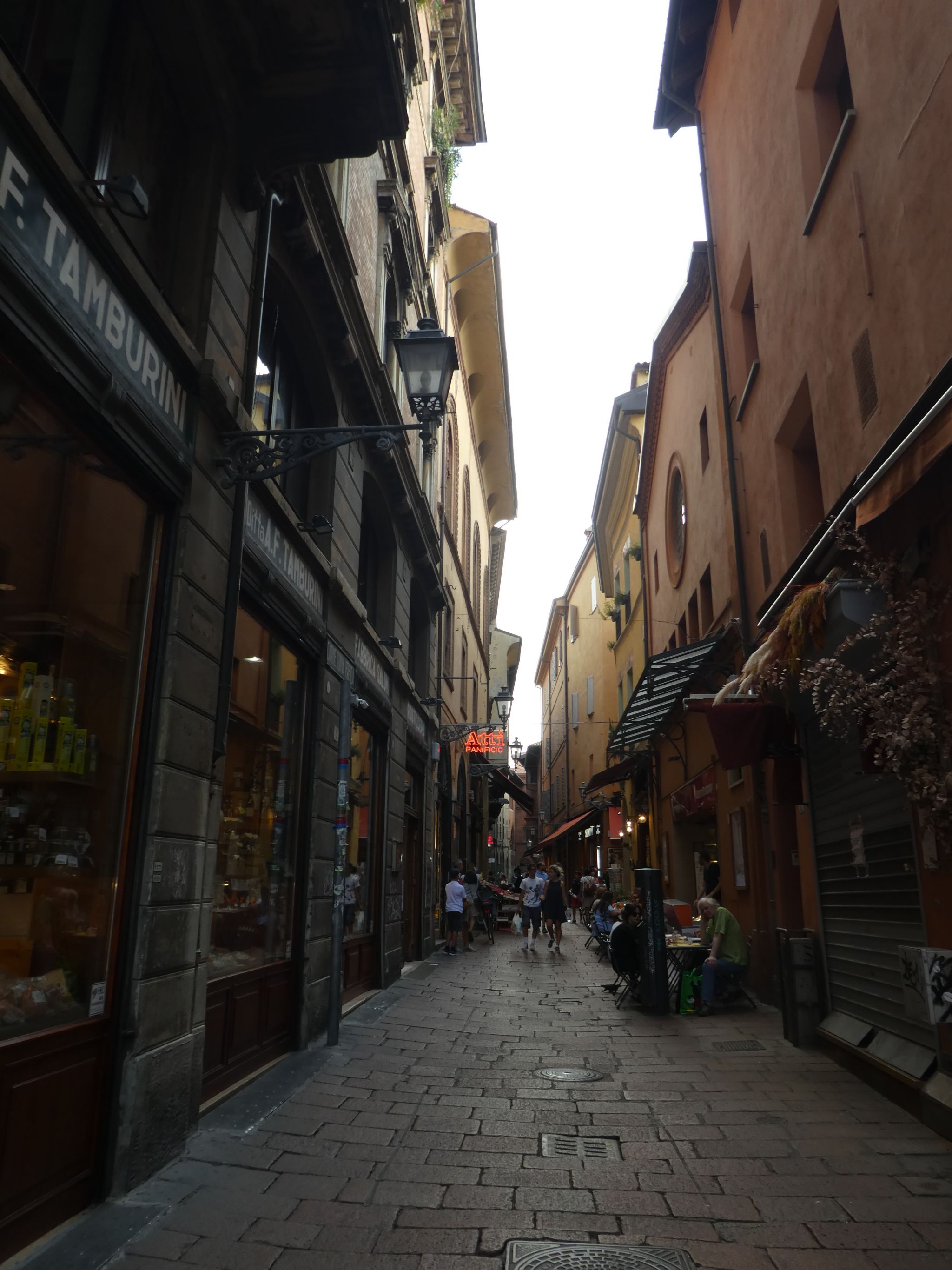 Wandering around it is a sensory experience – a visual treat and a place to just close your eyes and inhale! 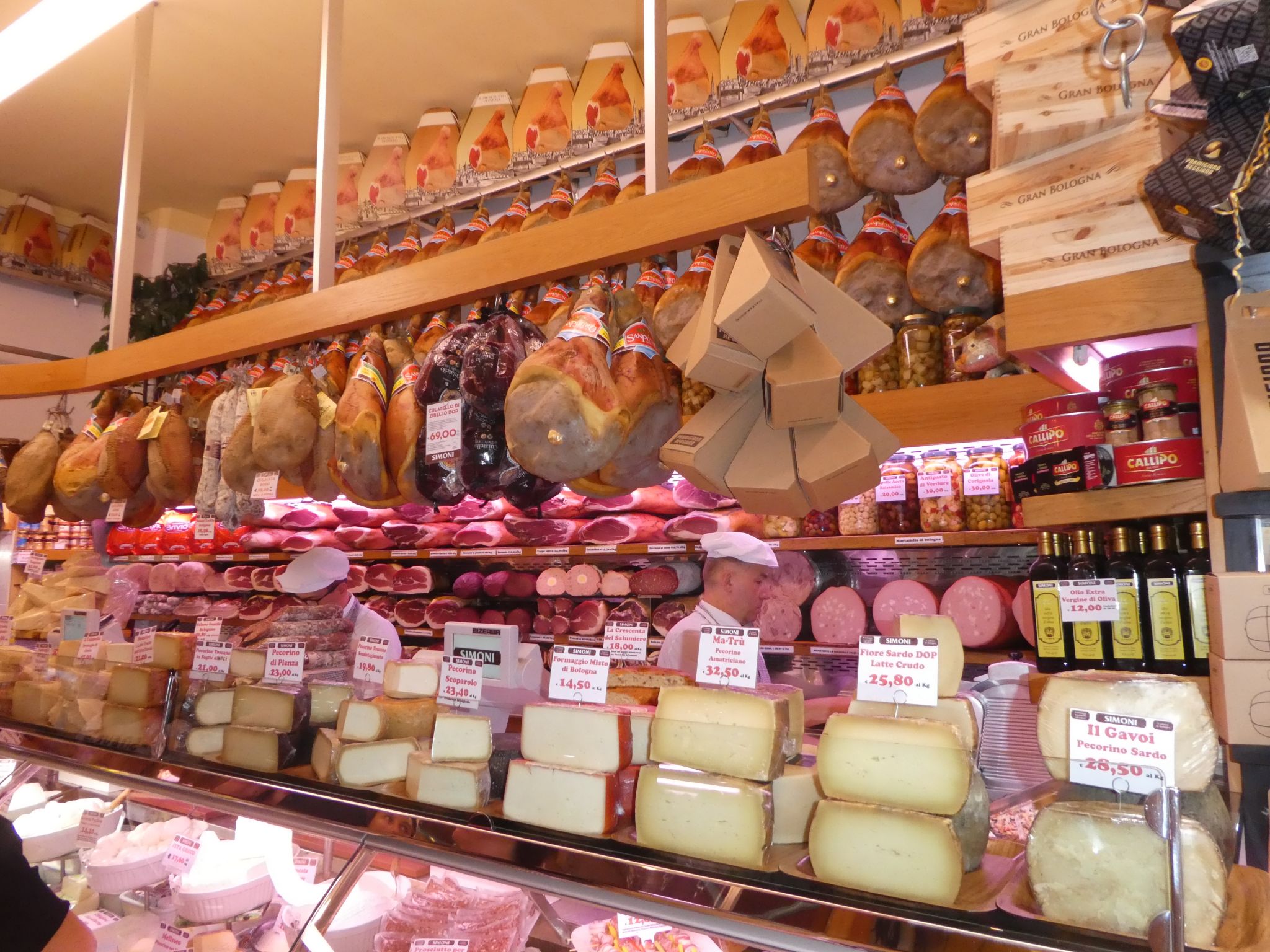 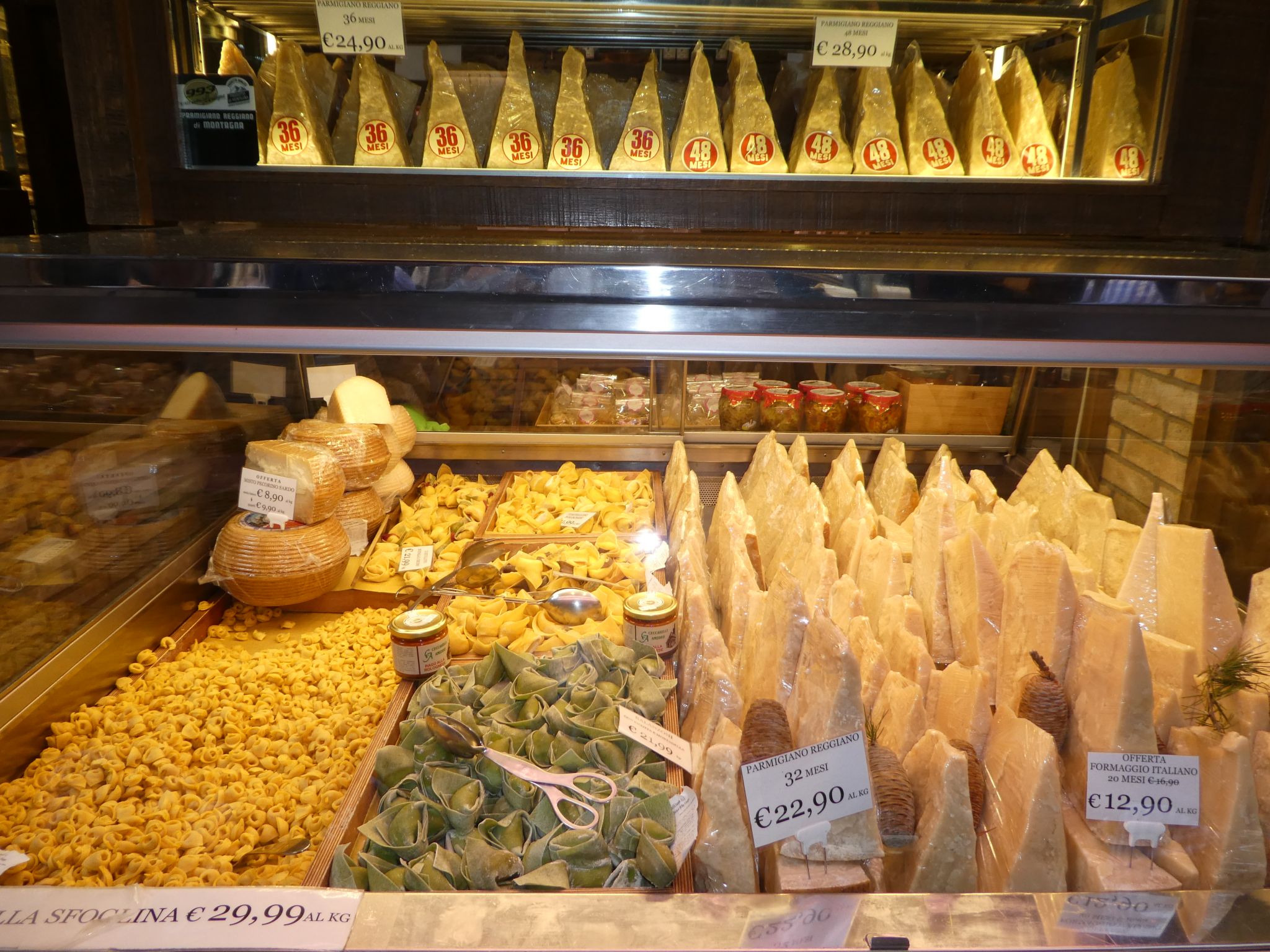 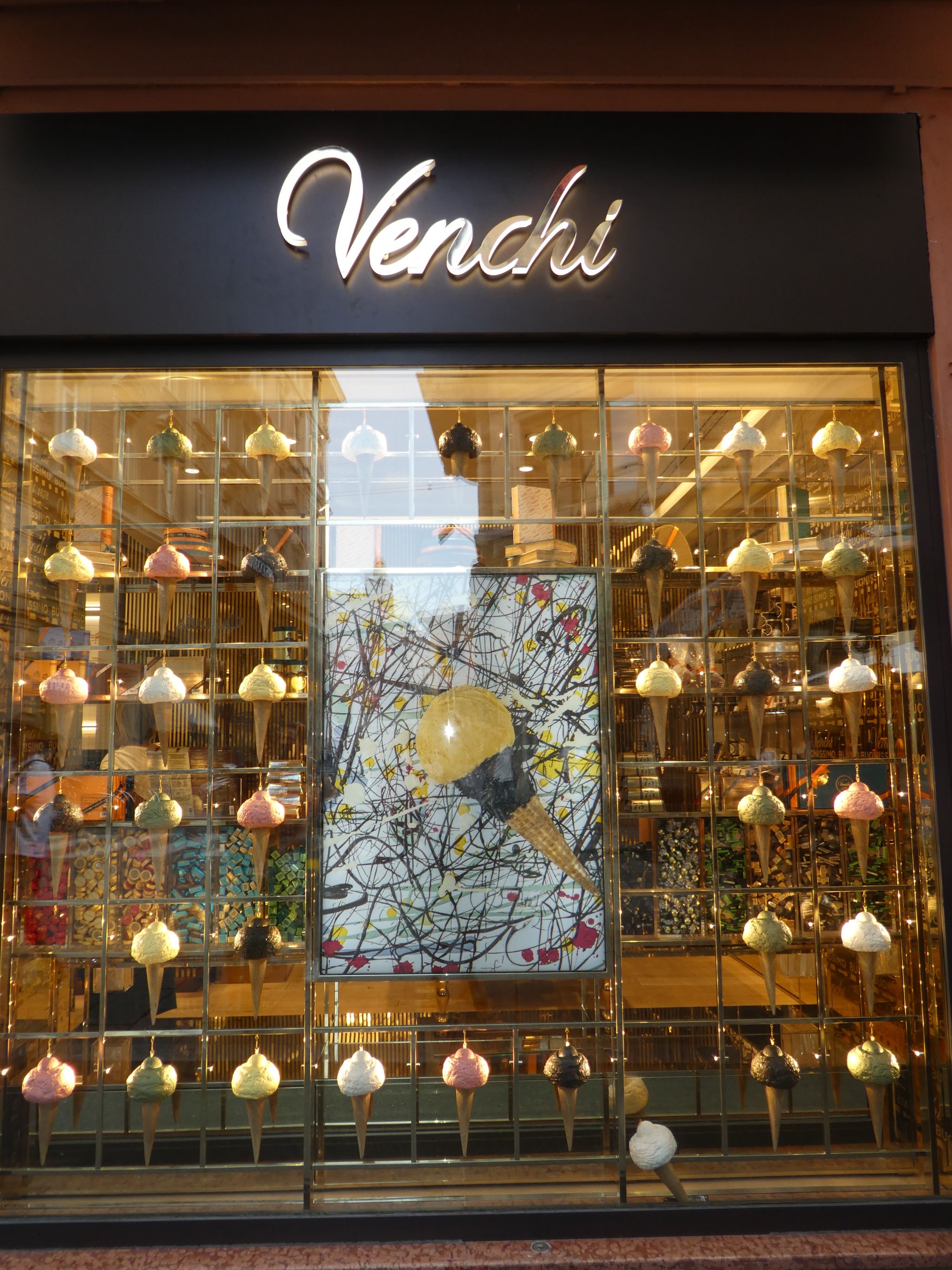 About 90 minutes by train from Bologna is the small city of Ravenna.  For 300 years beginning in 402CE, it was the capital of the Western Roman Empire, then the capital of the Ostrogoth Kingdom of Italy and then the seat of the Byzantine governor of Italy.   For that glorious period, the city was awash with money and religion, which found expression in a mania for mosaics.

From the outside, the city’s churches are rather plain, terracotta brick.  But step inside and you will find intricate, extravagant mosaics in dazzling colours of emerald, sapphire and, most of all, gold.

UNESCO has given World Heritage listing to seven sites within a short walking distance of each other in town, and another 5km east. 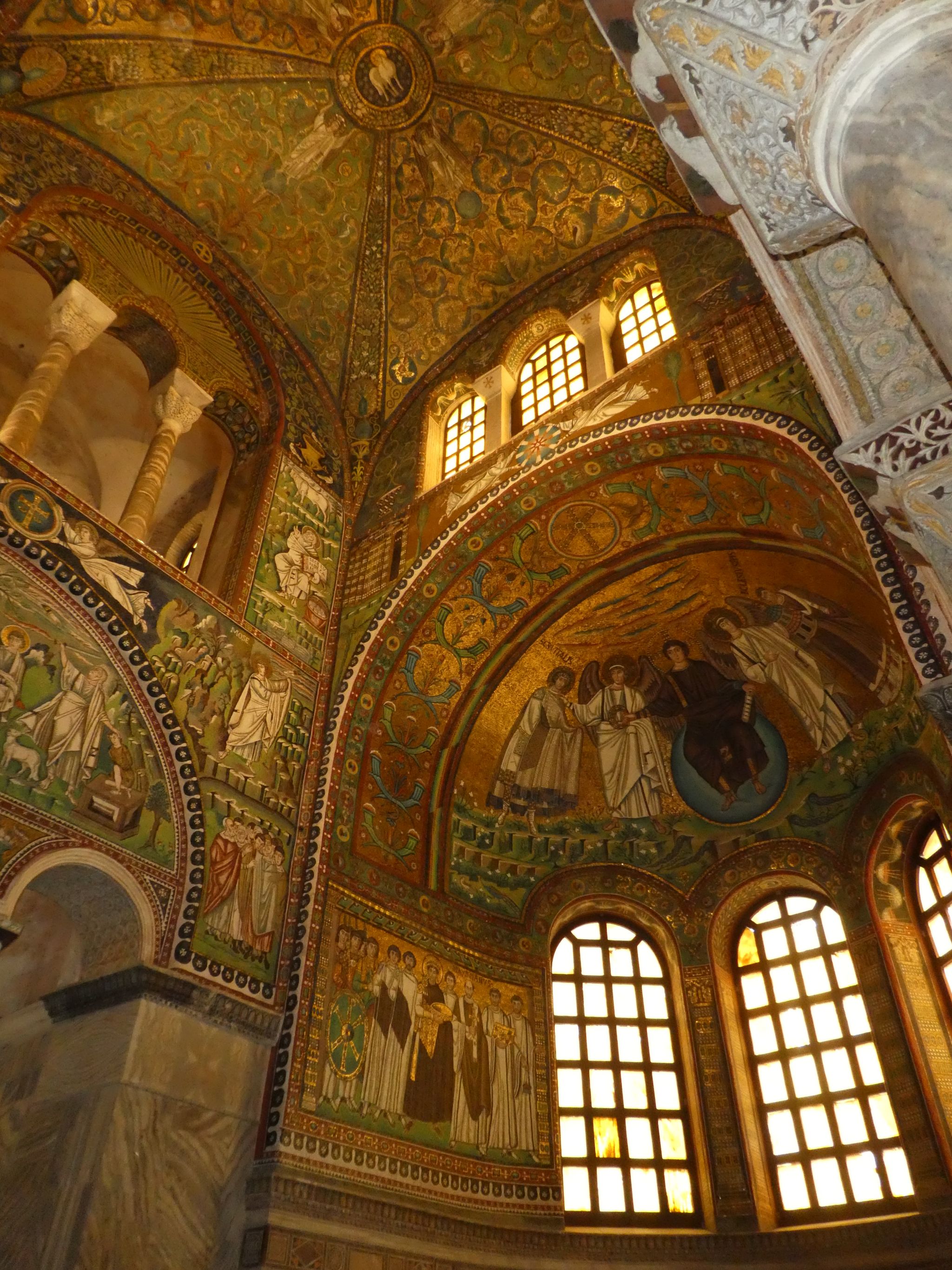 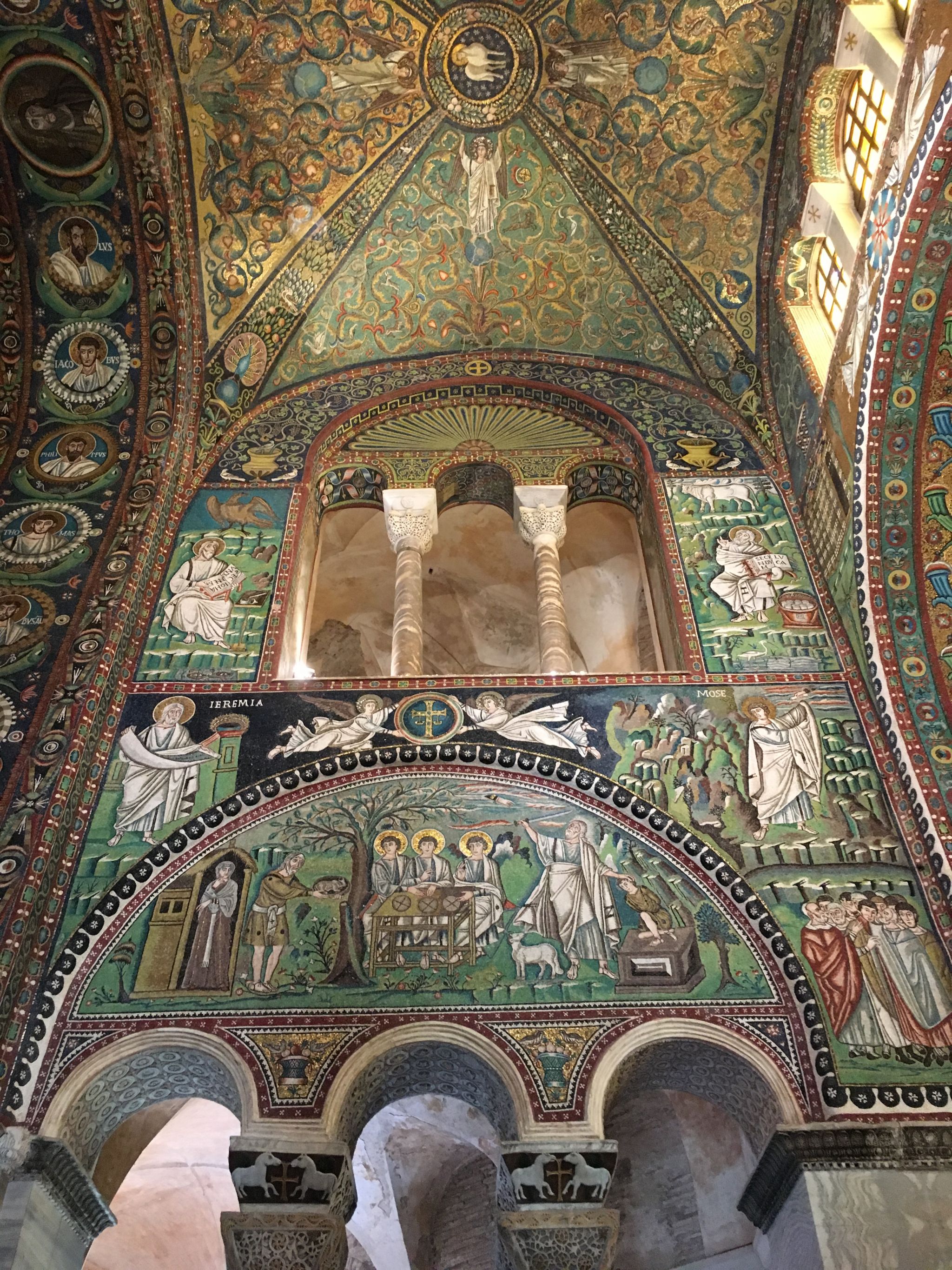 In the grounds of the Basilica, Emperor Honorius built the Mausoleum of Galla Placidia, for his sister.  Although it still bears her name, Placidia died in Rome and was buried in the family vault there.  Angels and saints look down from a celestial sky on an empty tomb. 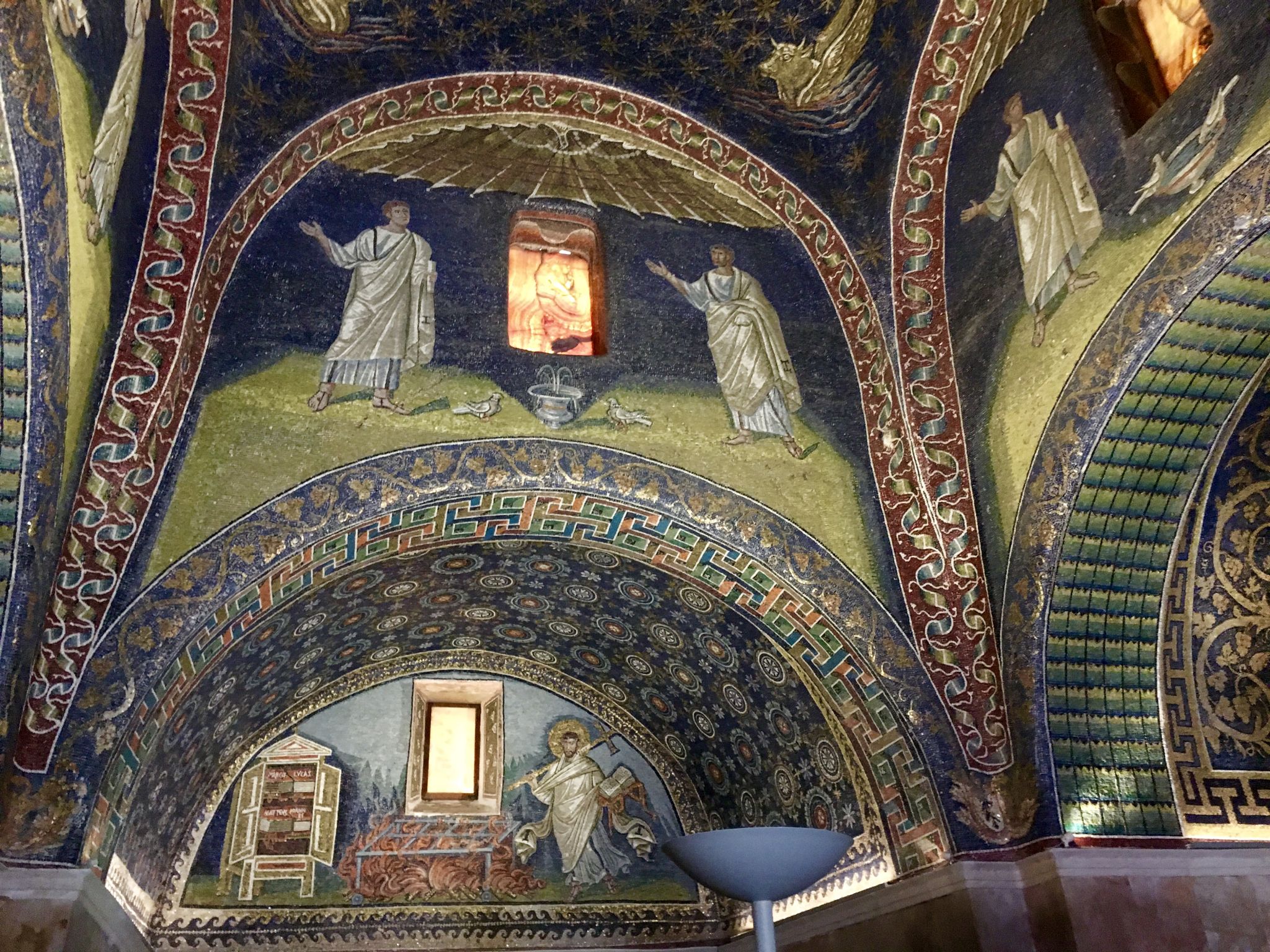 Over at the Basilica di Sant’Apollinare Nuovo, it has been claimed that Pope Gregory the Great once ordered that the mosaics be blackened because they were too distracting for churchgoers.

Along one wall, a procession of white robed martyrs honour Jesus, whilst on the opposite wall, a stream of virgins make offerings to Mother Mary. 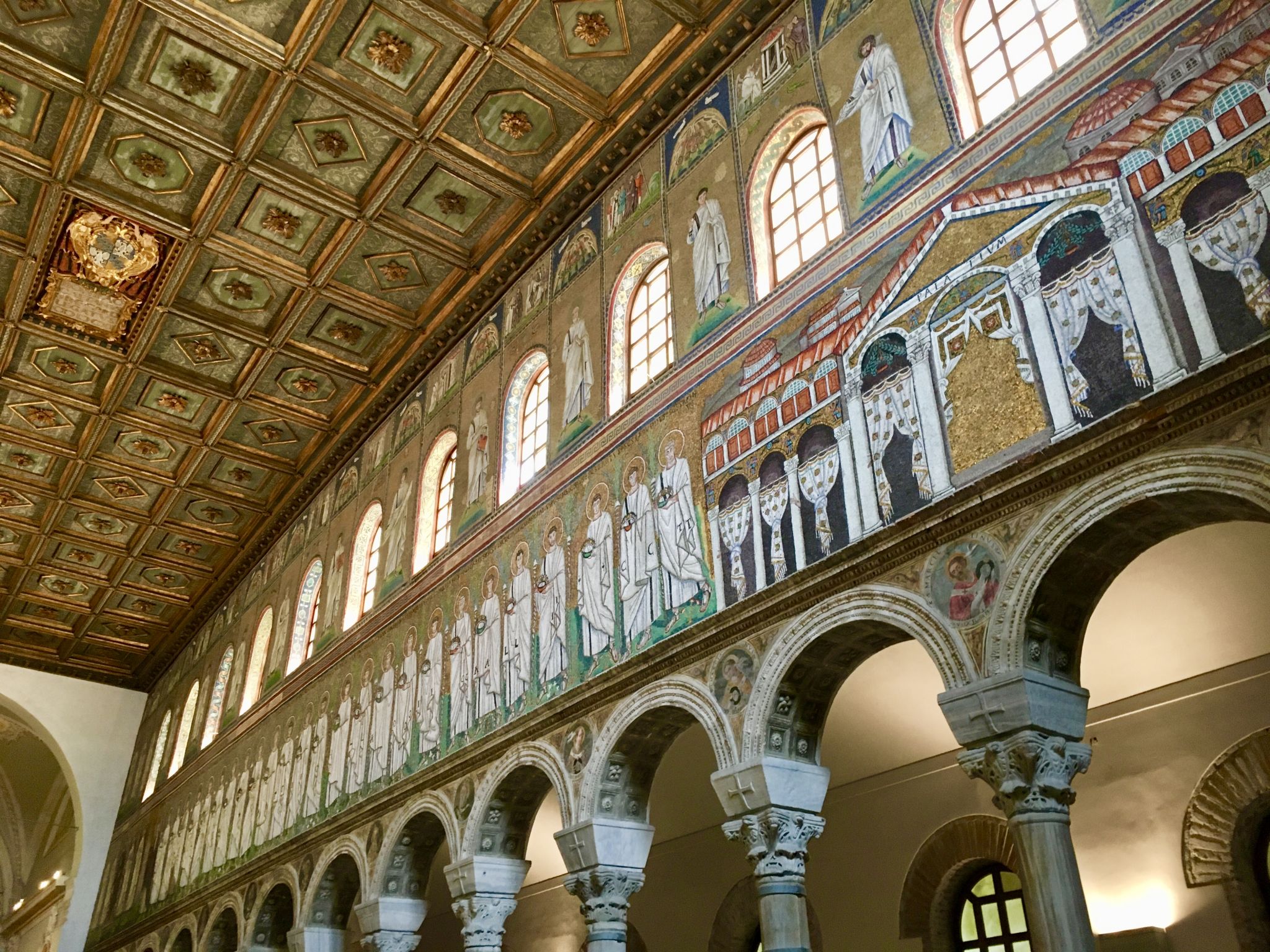 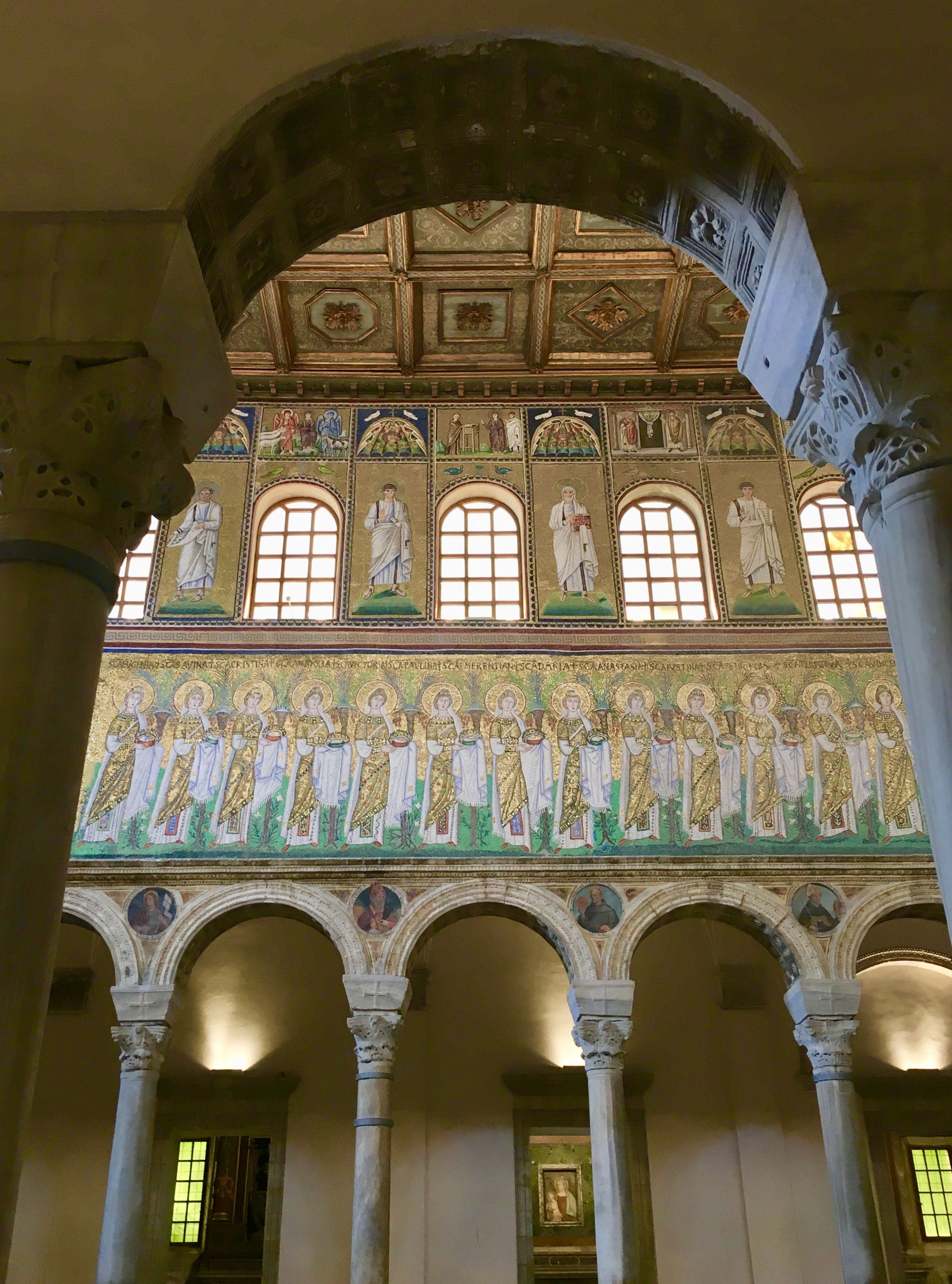 The Battistero Neoniano is Ravenna’s oldest building – a Christian Baptistry built over remnants of a Roman bath complex.  It’s worth the crick in your neck looking up into the dome where the mosaic depicts Christ being baptised by St John the Baptist in the Jordan River.  There seems to be some weird visual trick in the construction whereby it doesn’t matter where you stand, the central figures are side-on. 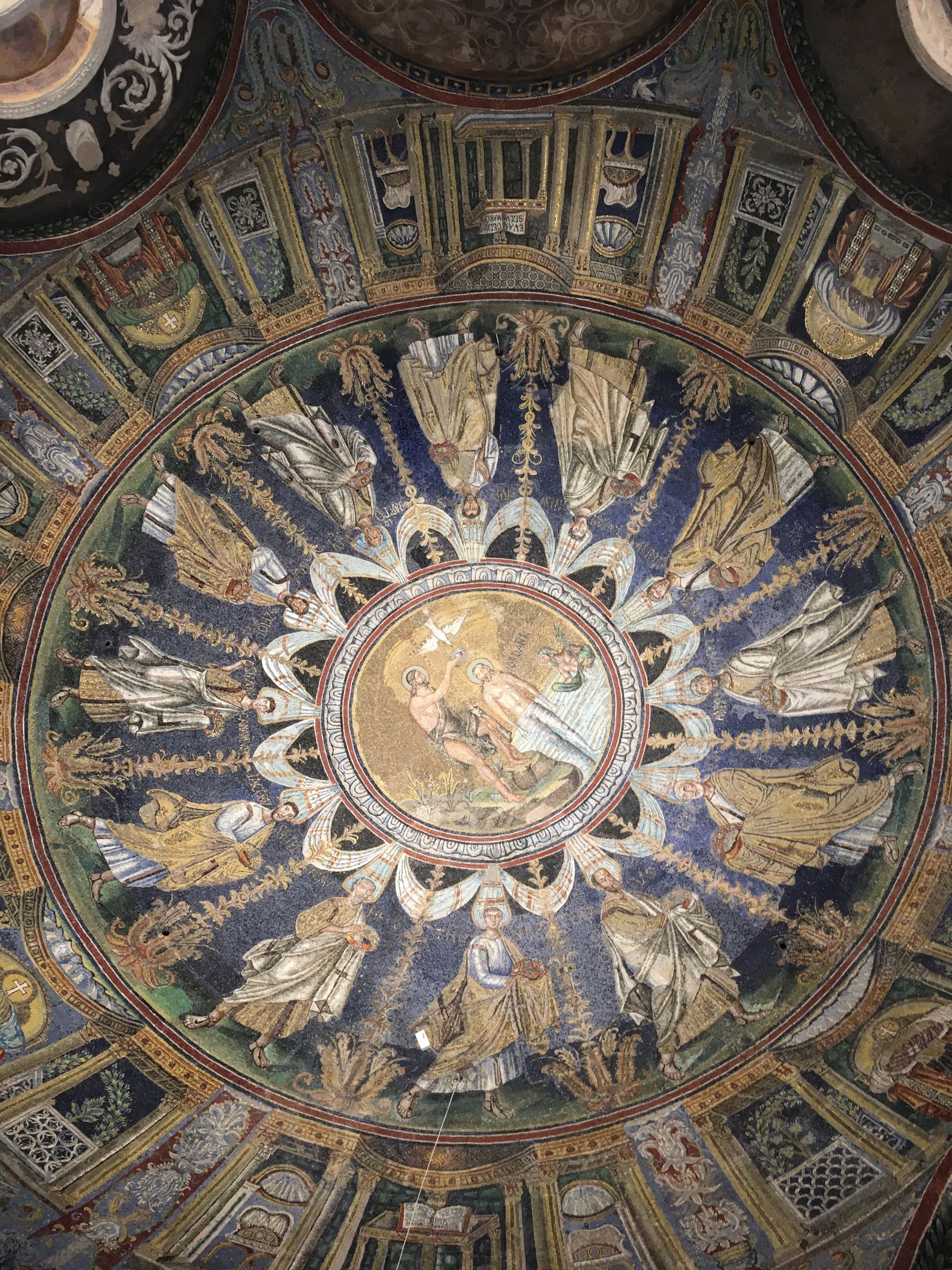 No such problems at the Battistero degli Ariani.  This is the roof of the dome taken by placing the camera on the floor pointing up. 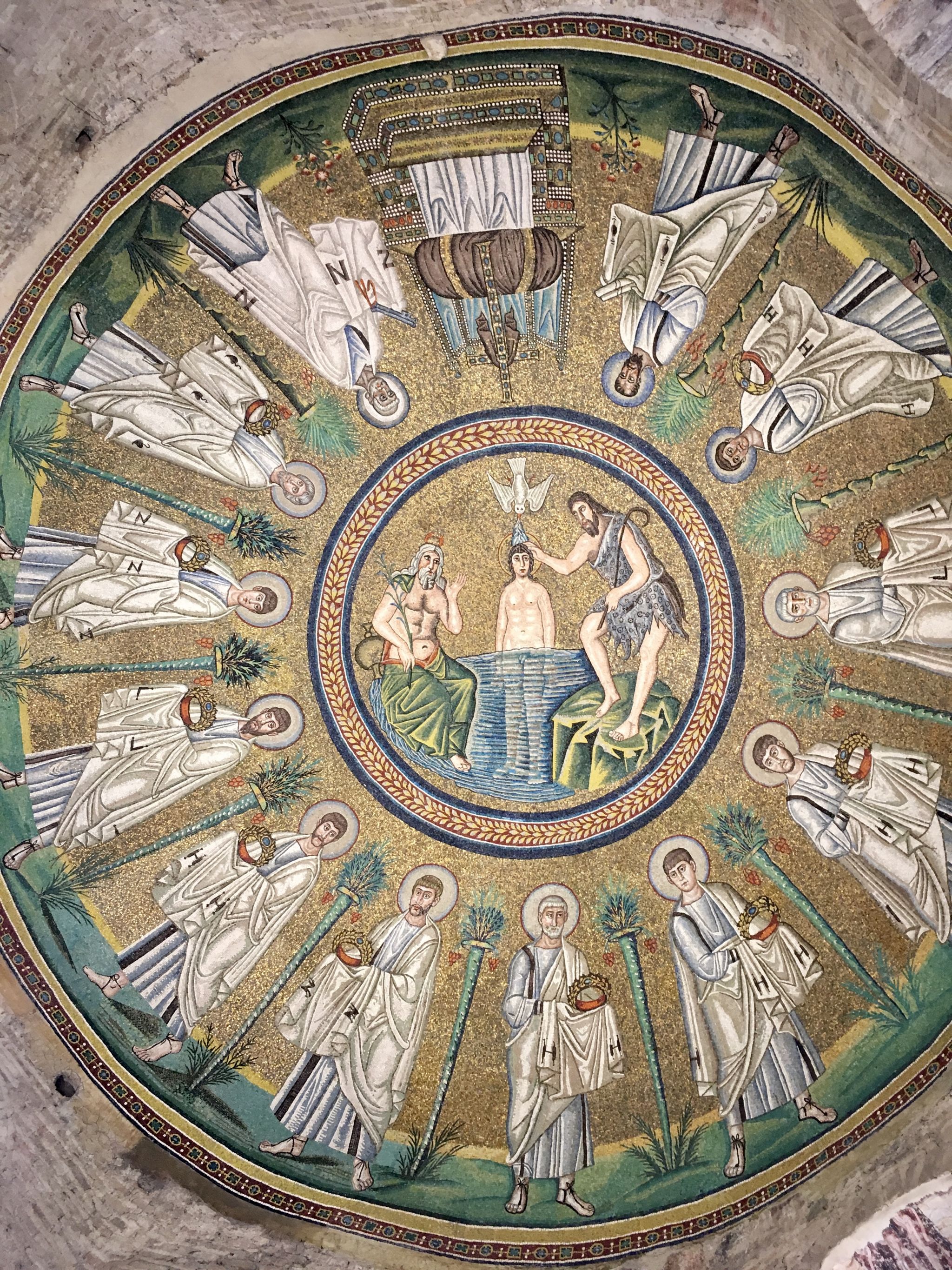 When you’ve had your fill of mosaics, there’s also a few Dante sights to see.  The poet spent his last years in Ravenna after being exiled from Florence.  His tomb attracts a steady stream of visitors.   And next door in the Old Franciscan Cloisters, a garden is dedicated to his memory. 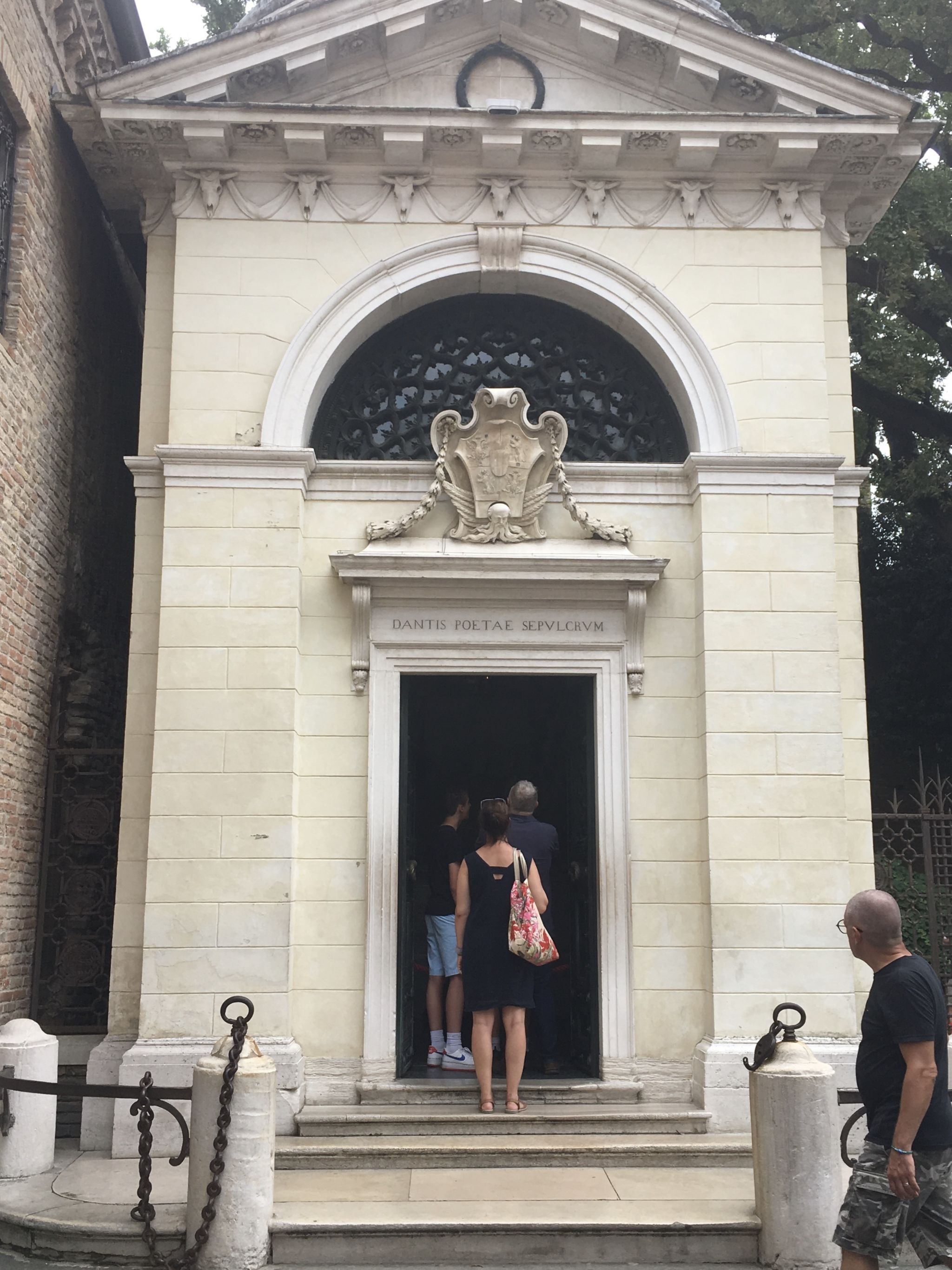 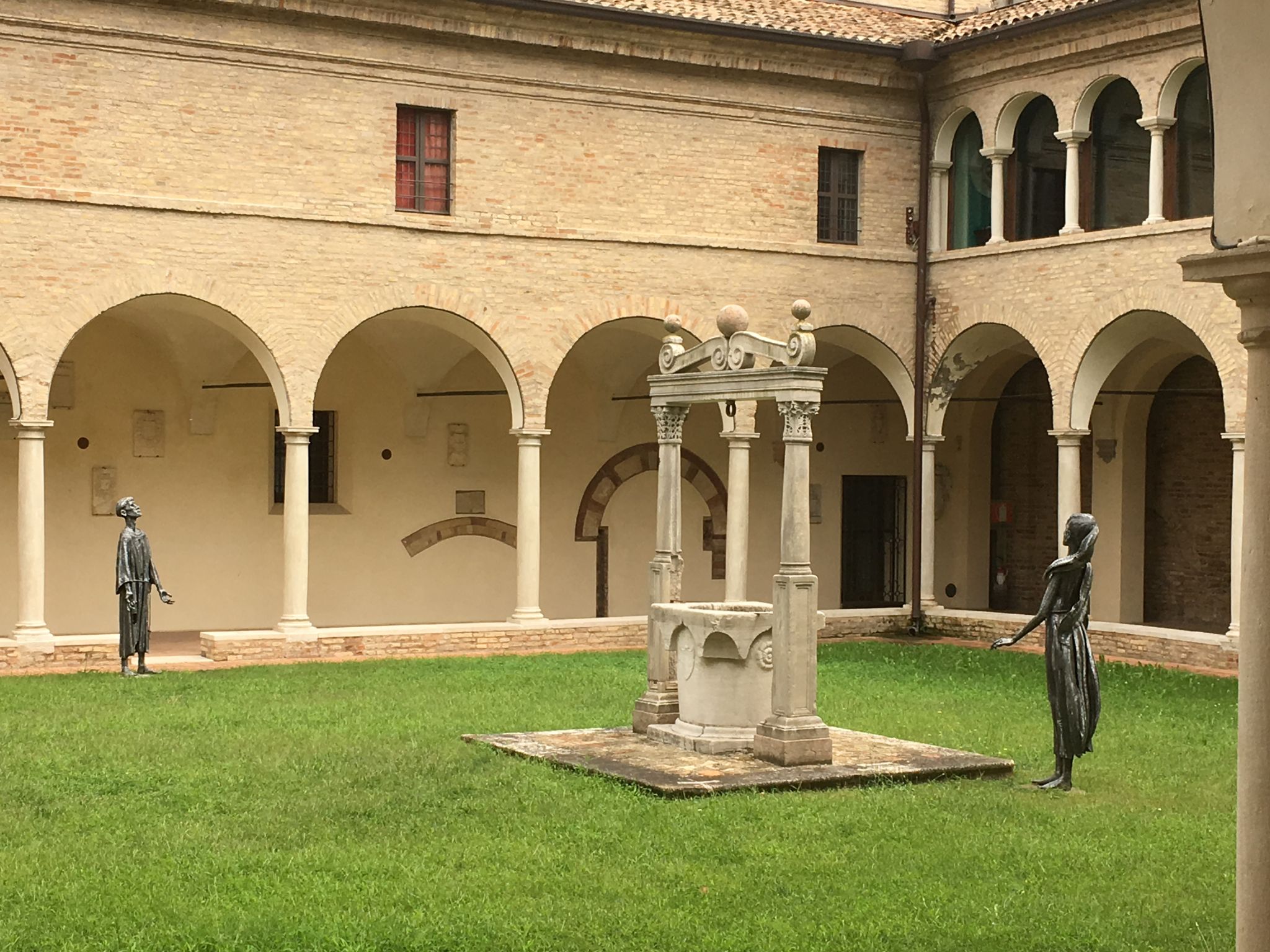 Even Dante loved the mosaics, describing them as ‘a symphony of color’.

While Julie visited Ravenna, John went to the Ducati Museum in the suburbs of Bologna.  He reported “There were lots of motorcycles.  It was excellent.  It brought back lots of memories of a misspent youth.  I didn’t take any photos.  I didn’t know I had to give a report.  I got through school without doing any homework and I’m not starting now.  Homework sucked then, and it still sucks”.

From Bologna we also jumped on a train to Modena.  This little part of Italy is famous for prestige motors (Ferrari, Lamborghini and Maserati are all based here), opera (the last home of Luciano Pavarotti) and balsamic vinegar.

Only Modena and neighbouring Reggio Emilia have DOP status (similar to the appellation system for wines) for their balsamic vinegars.  To be called Aceto Balsamico Tradizionale di Modena, balsamic must be a mixture of Trebbiano and Lambrusco grapes from here, pressed and barrel aged for a minimum of 12 years in increasingly smaller barrels.  As the liquid reduces, the flavour intensifies.  Nothing else can be added, and there’s even a legal requirement on bottle shape.

Not to be confused with the mass-produced product which is simply called Aceto Balsamico di Modena.  It can be aged for as little as two years and may have additives such as caramel, wine vinegar, gum and thickeners to mimic the sweet taste and glossy texture of the Tradizionale.

The mass-produced one may be fine for salad dressing, but the Tradizionale is put to exquisite use – a drop on a small piece of aged parmesan as an antipasti, or a swirl on the top of a custard creme gelato. 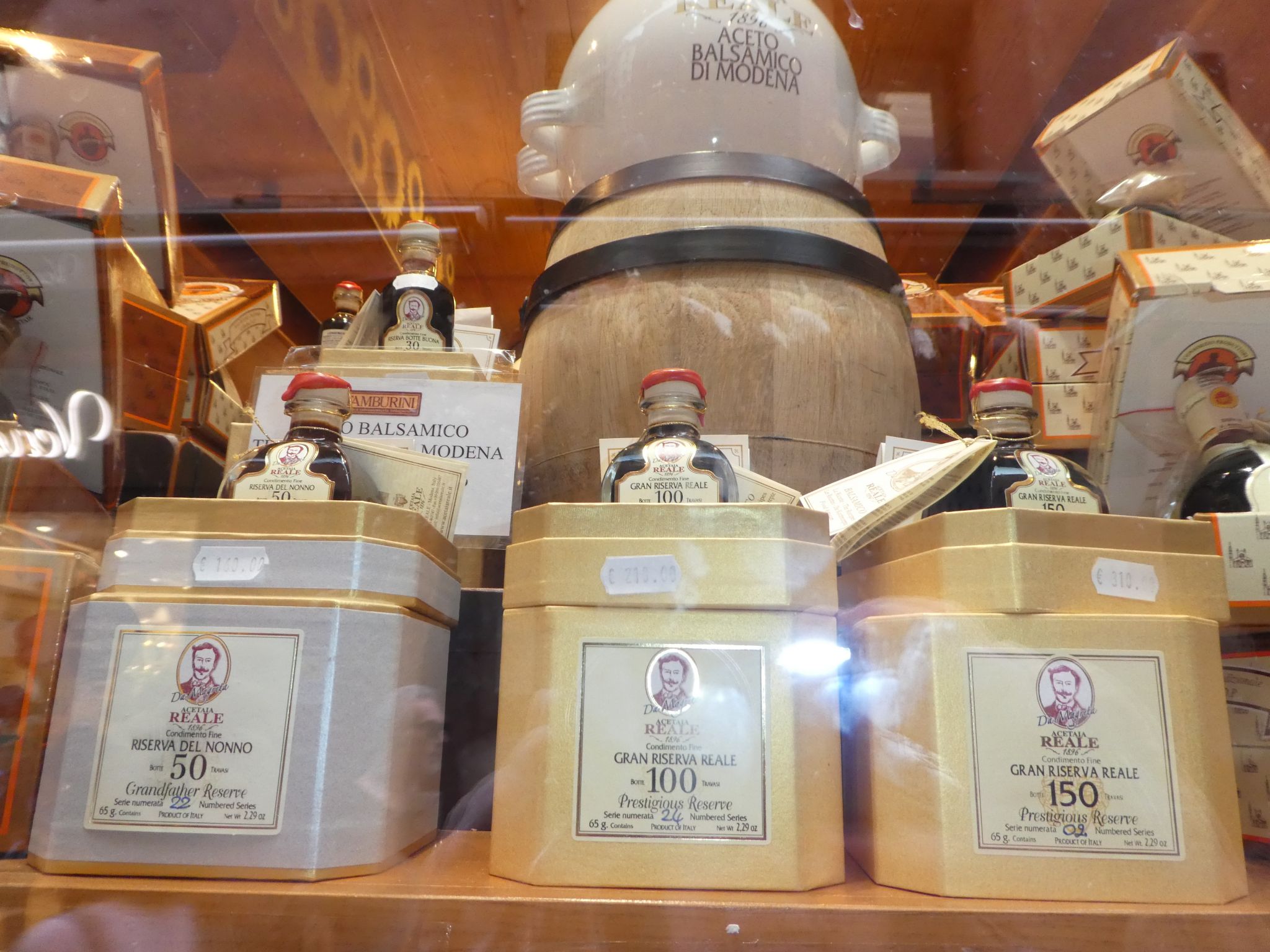 But we digress.  The purpose of our visit was Ferrari.  In Modena, the Enzo Ferrari Museum has an ultra-modern 6,000 square metre yellow-roofed pavilion housing Enzo Ferrari’s collection of rare cars of the 1950s such as the iconic 250 California. 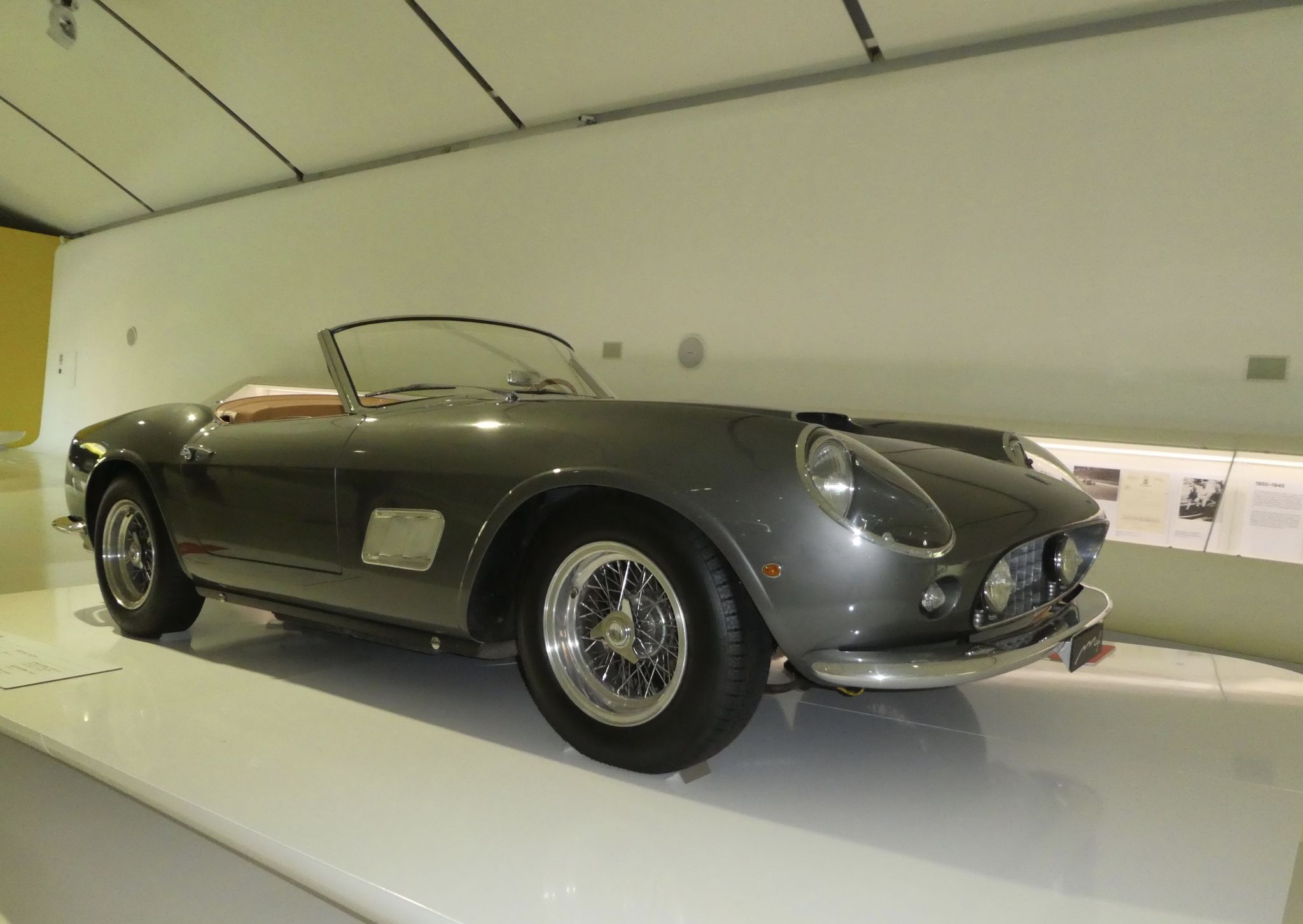 Of course there are some classic and modern Ferrari road cars as well, including the super sexy single seater Monza SP1 released in 2018. 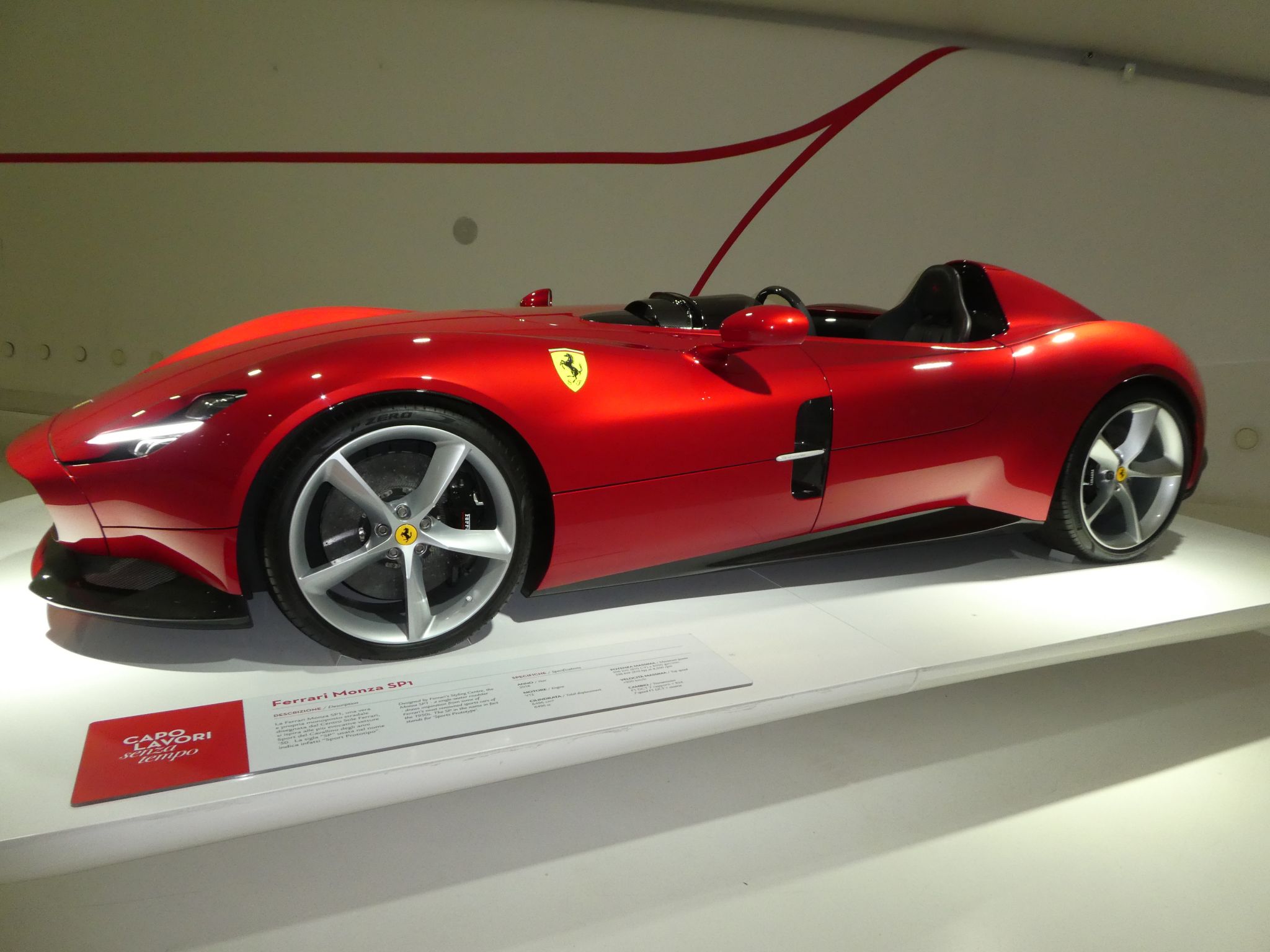 Next to the museum, Enzo’s original workshop has a copy of his office and a riveting collection of Ferrari engines. 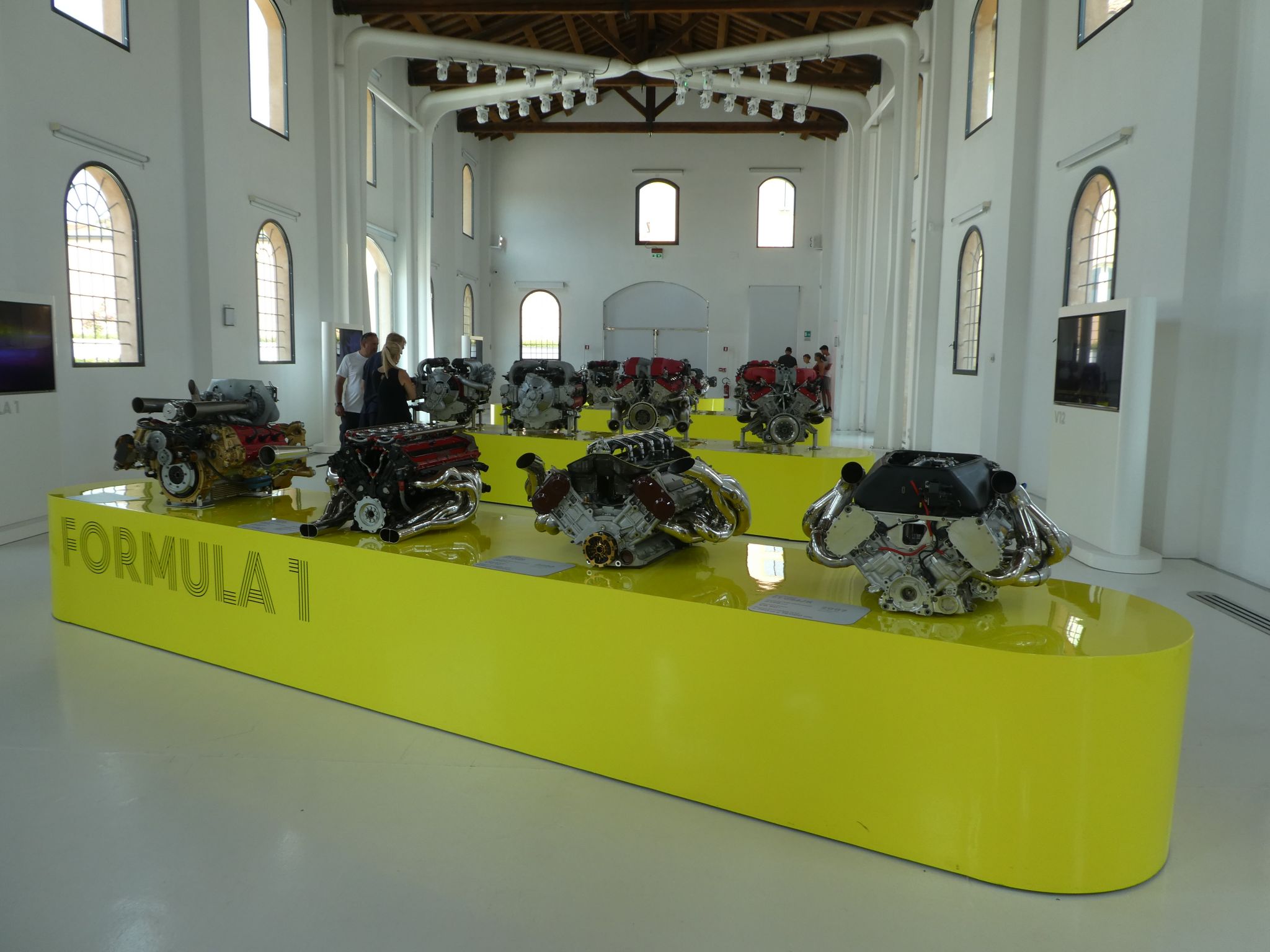 As business expanded, Ferrari moved production to a huge industrial site near Maranello, 18kms away, and later built the 3,000 metre Fiorano Test Track next door where Ferraris are still tested.  It’s a massive ‘Ferrari suburb’ with lots of pretty, red-jumpsuit-clad lads (and yes, they are all male) strutting from the factory across to the track with helmet casually tucked under one arm.

You can’t go in to the test track but you can visit another Ferrari Museum, this one focussed on Ferrari’s racing history and involvement with Formula 1.

There’s a room of Ferrari Scuderias. 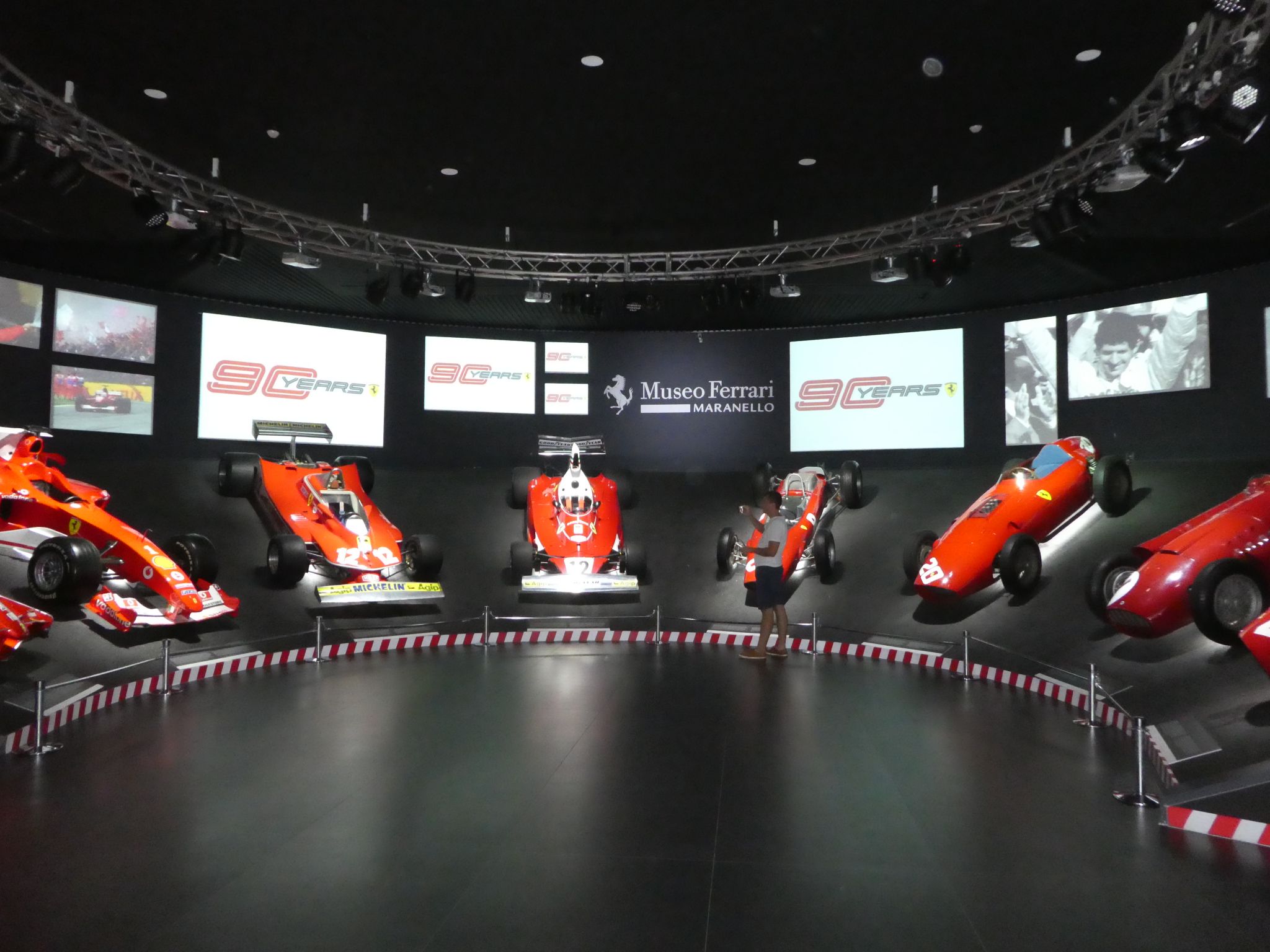 There’s also a 2004 hyper car – a special release which only those who already owned FIVE Ferraris were eligible to buy.  Except for one which the Ferrari company gave Pope John Paul II.  The pontiff had it auctioned and gave the proceeds to a fund for victims of the South East Asia tsunami of that year.  He already had the most exclusive vehicle in the world – a Popemobile! 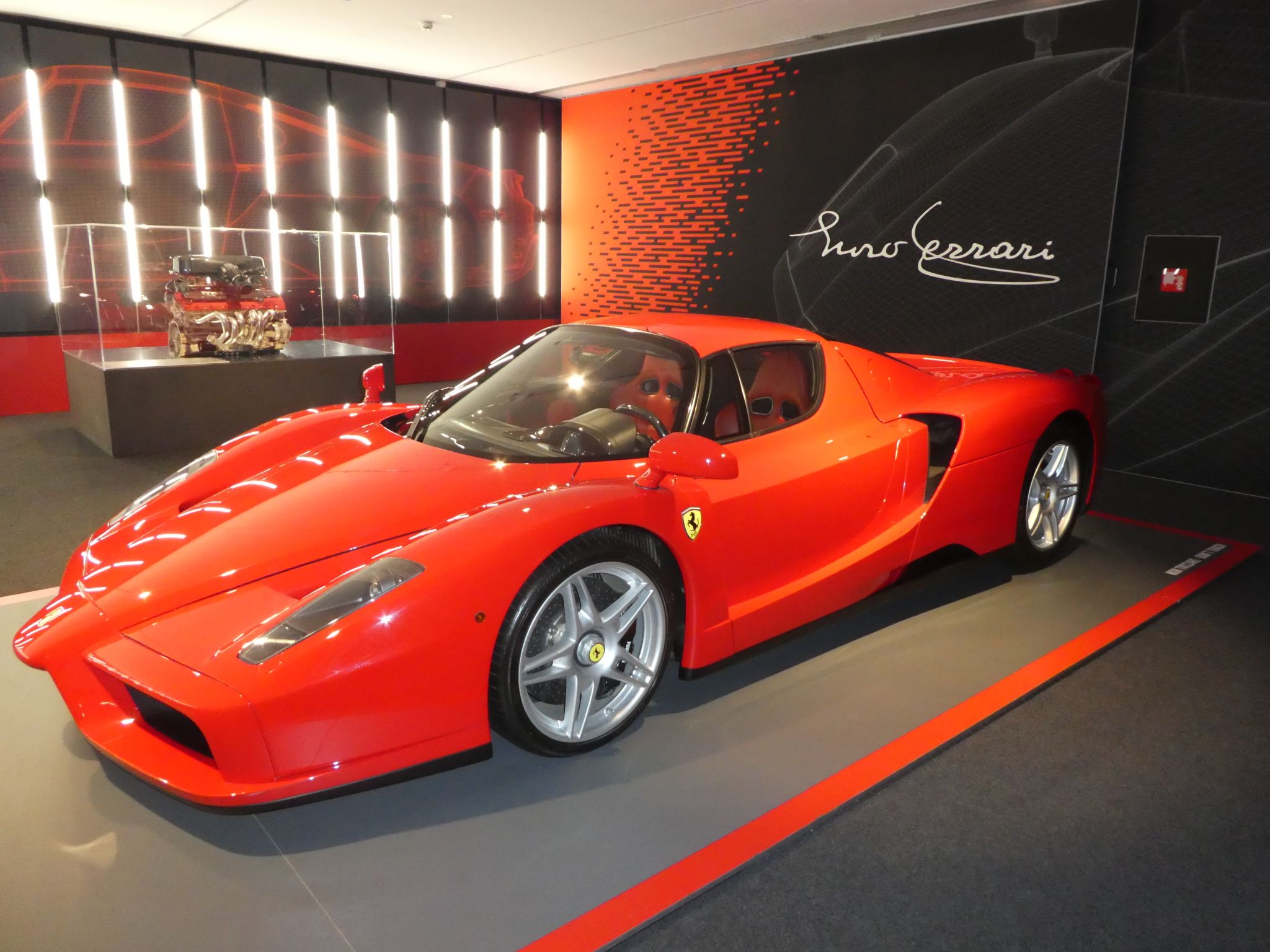 We could show you more Ferraris, but really they are all kinda the same.  Well, they’re all sleek, red and look like they go really fast.  Because they do.

You can buy all sorts of Ferrari products, including a matchbox car with a price tag of €370.  Makes the balsamic look cheap.