Tiny, land-locked San Marino, whose full formal name is the Most Serene Republic of San Marino, is a genuine historical curiosity.  It is the world’s oldest sovereign state, remaining steadfastly independent whilst the city states around it all eventually succumbed to amalgamation into the nation of Italy.

It is one of only three countries in the world which are completely surrounded by another country – the others being Vatican City, also surrounded by Italy, and Lesotho, surrounded by South Africa.

San Marino is the fifth smallest country in the world – just 61 square kilometres – and has a population of only 34,000.  Despite its small size, per capita GDP is one of the highest in the world, so the standard of living is high.  That’s thanks to tourism and a clever tax system which brings Italians flocking to industrial outlets just over the invisible border to buy products such as bathroom ceramics and hardware ‘duty free’.

For tourist visitors to the country, it’s all about Citta di San Marino (City of San Marino), the UNESCO listed citadel town on Monte Titano.  So for most of us ‘San Marino’ is both the country and the town.

It is a town seemingly made entirely of stone. 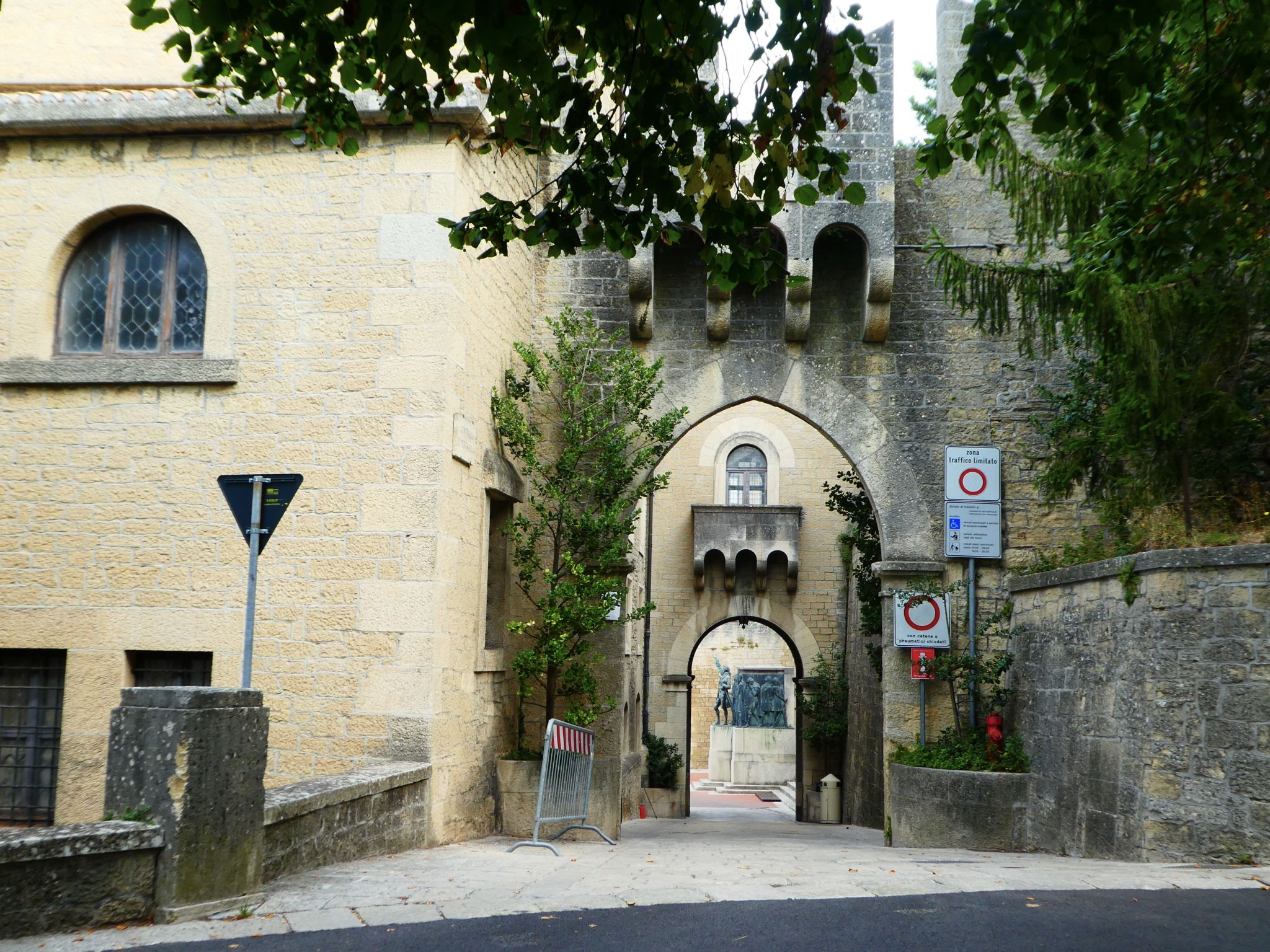 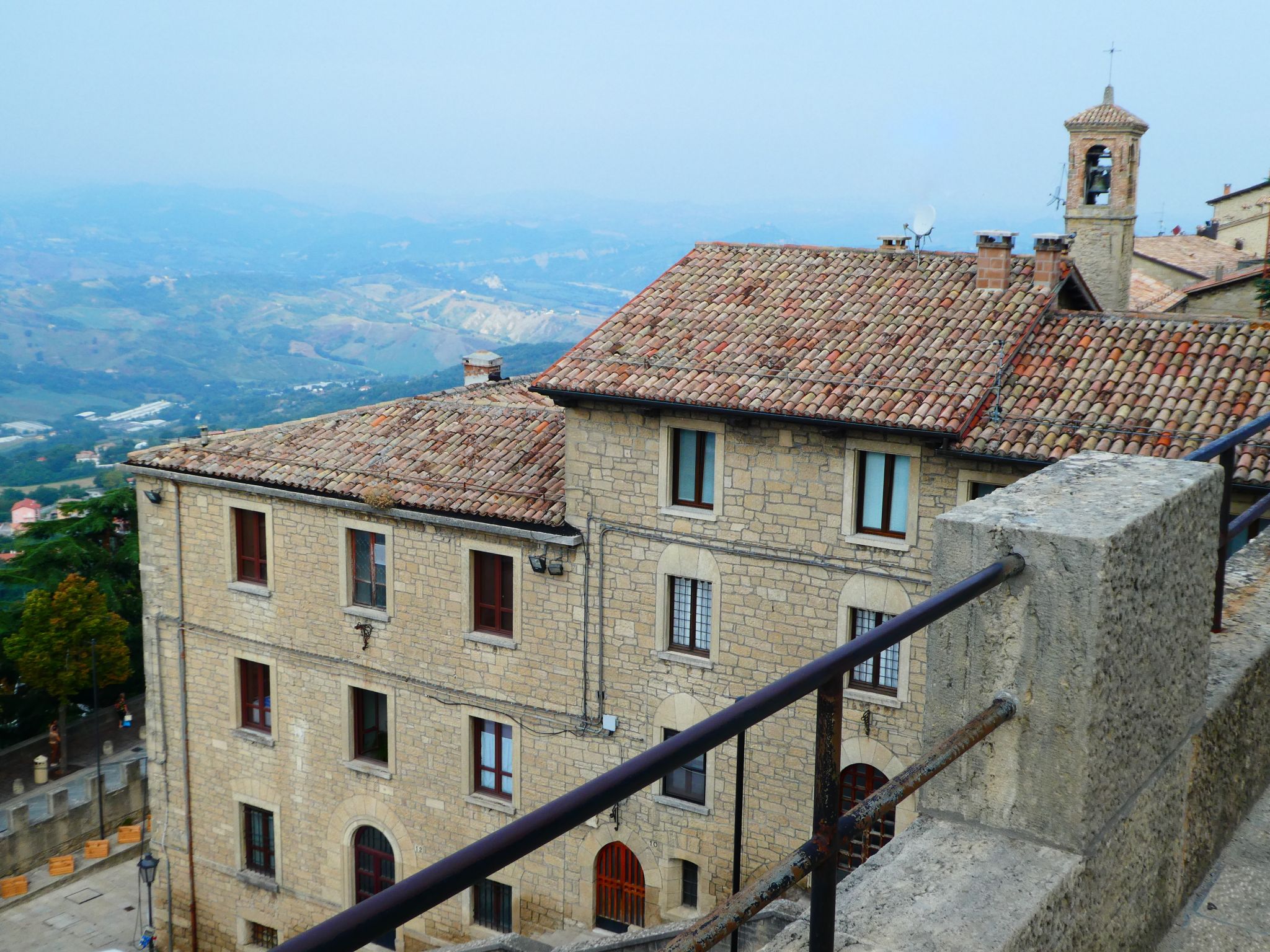 An easy walk uphill from town, on the highest peaks of Monte Titano, are three castle towers.  These adorn the country’s flag and coat of arms, and are it’s most recognisable sight.

The town stretches up to almost reach Torre Guaita, the closest and oldest of the towers.  It was still in use as a prison until 1975. 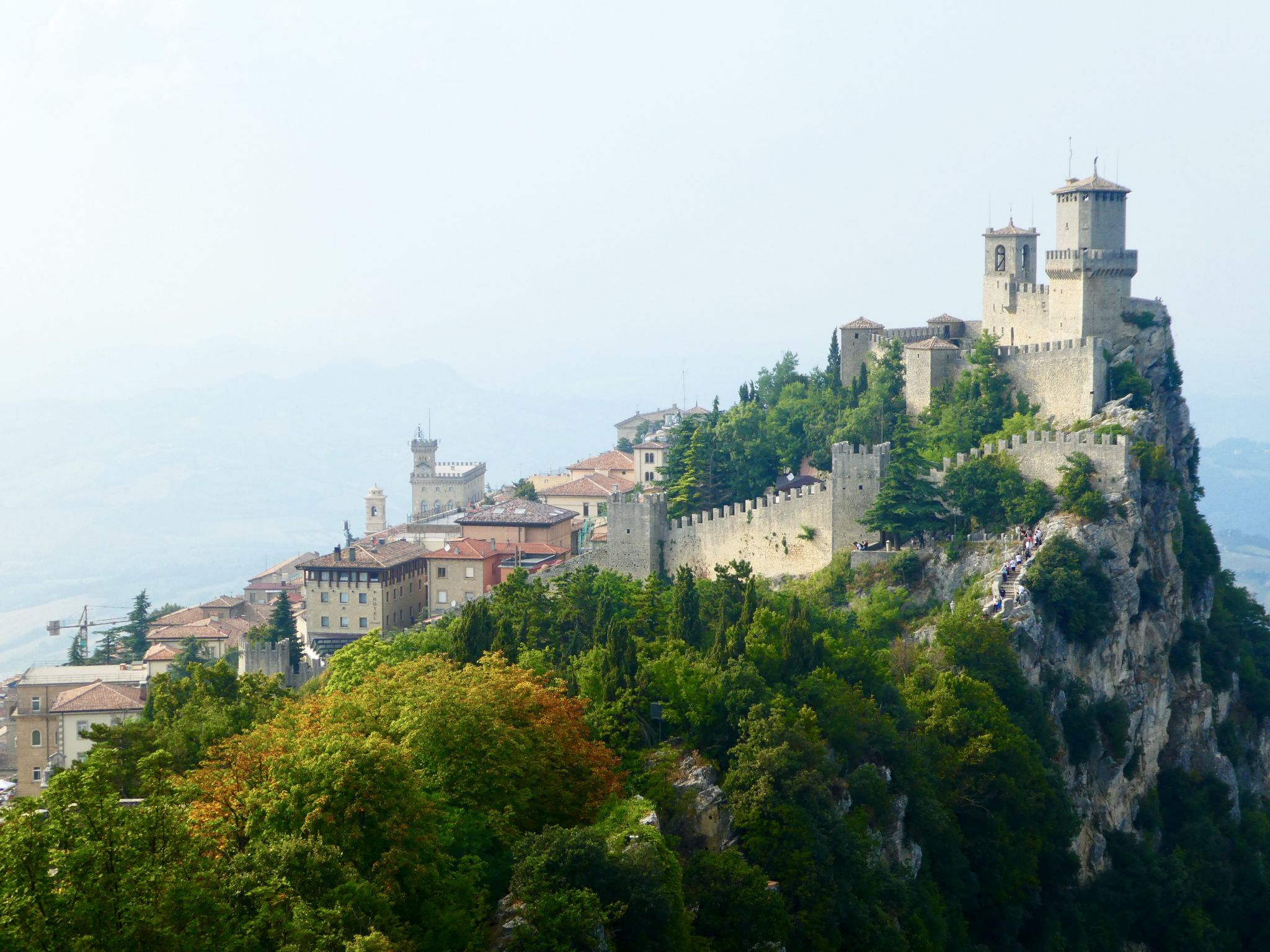 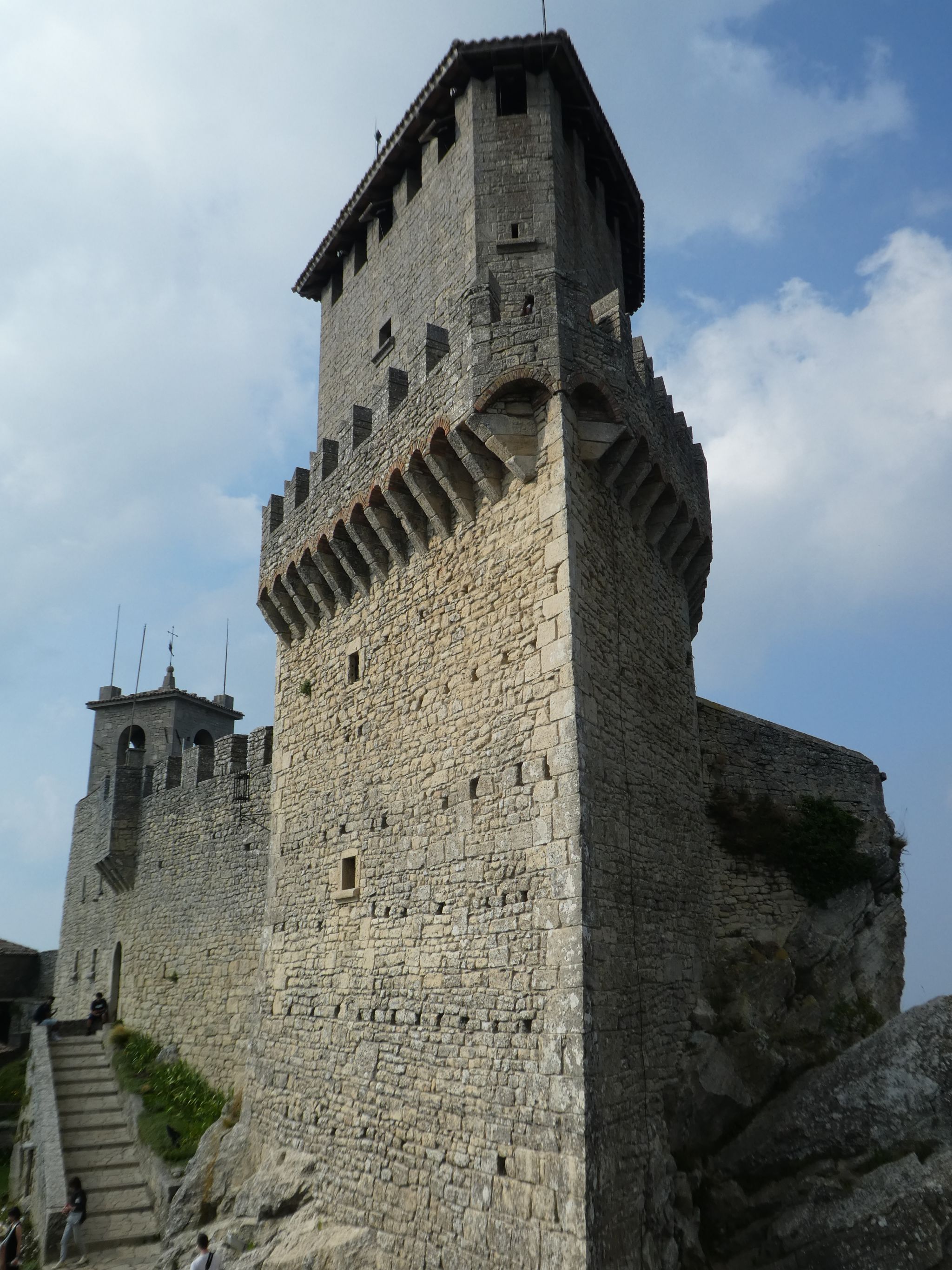 You can enter and explore the restored castle, and climb the ramparts for panoramic views over the whole of this microstate.  On a clear day you can see as far as Rimini, the Italian resort city on the Adriatic coast. 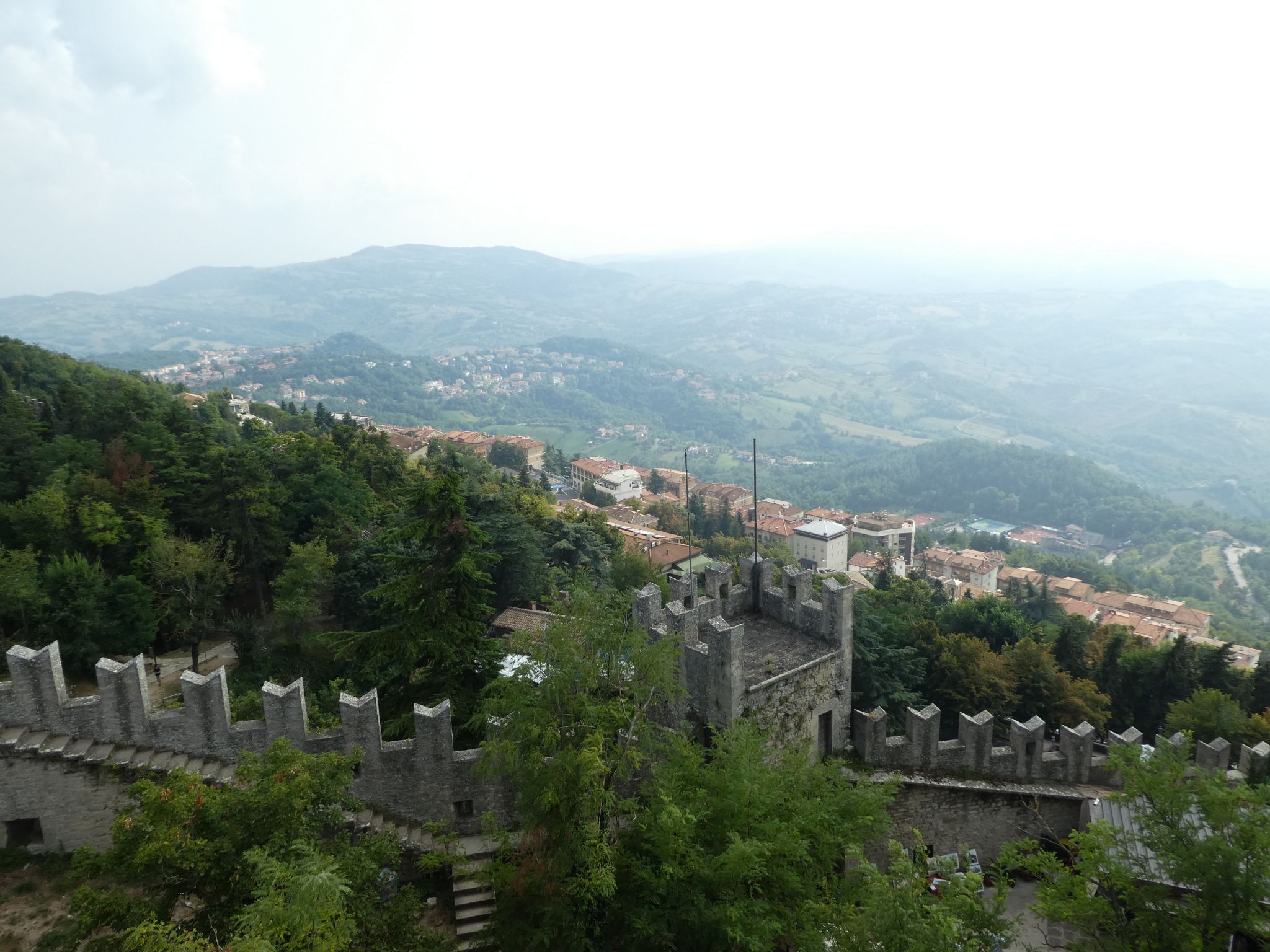 From Torre Guaita it is a short walk on a stone path along the ridge and up to the second tower, Torre Cesta.  This castle was built in the 13th century on Monte Titano’s highest peak.  There is a small medieval armaments museum and visitors can also climb to the top of the turret.

And again, the views from the top are spectacular. 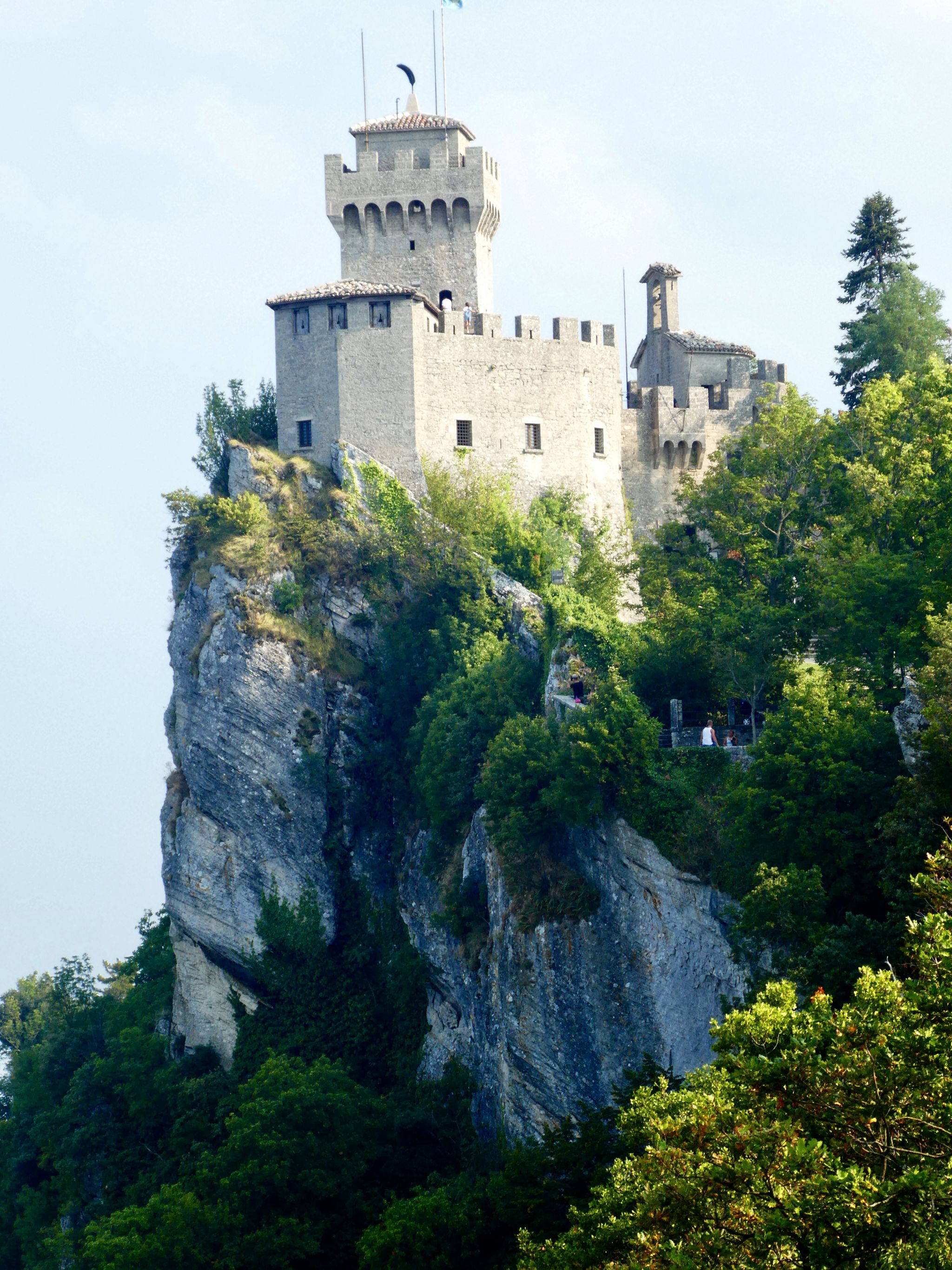 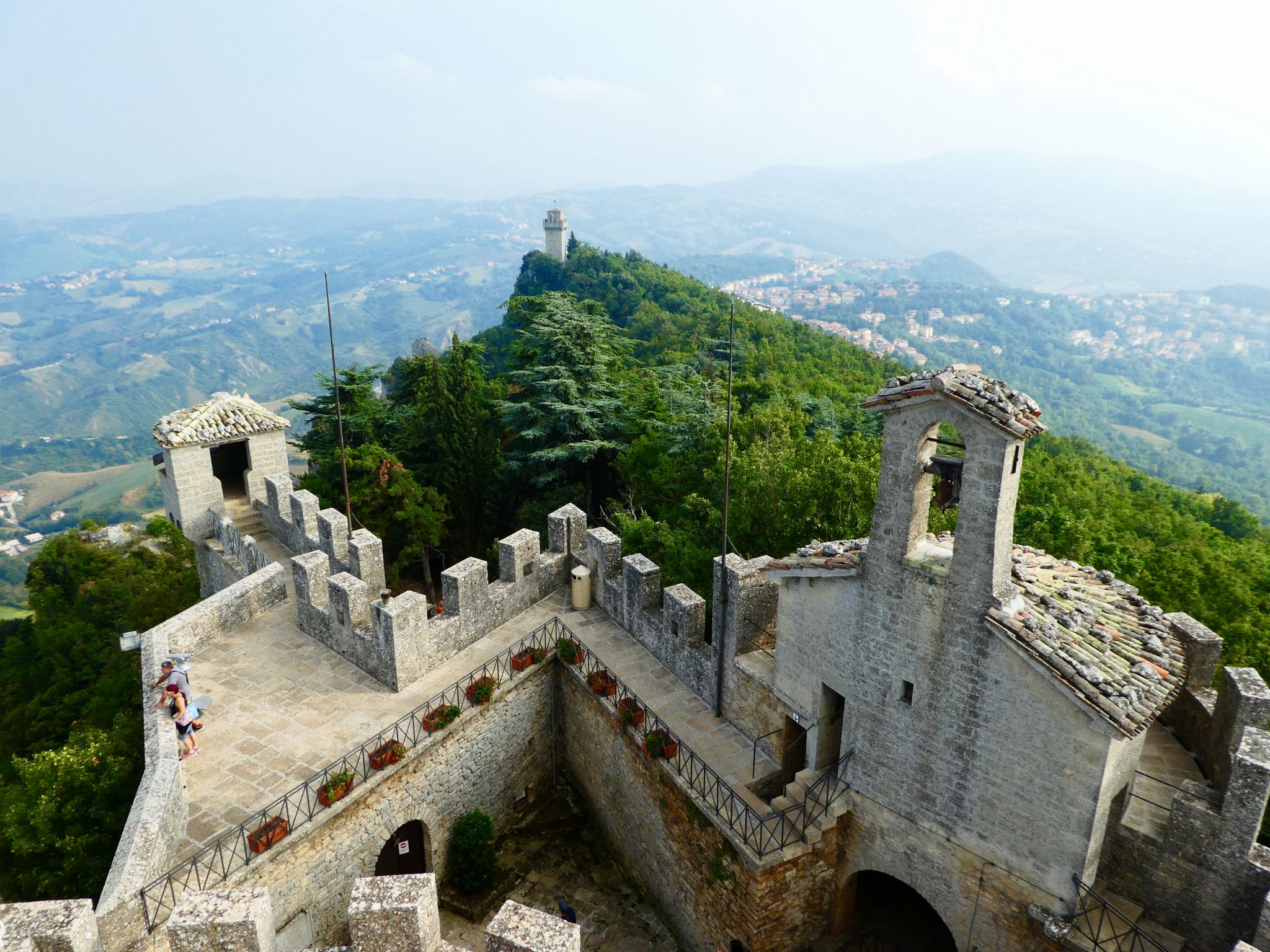 The third tower, Torre Montale, is privately owned and doesn’t accept visitors, so you just have to admire it from afar. 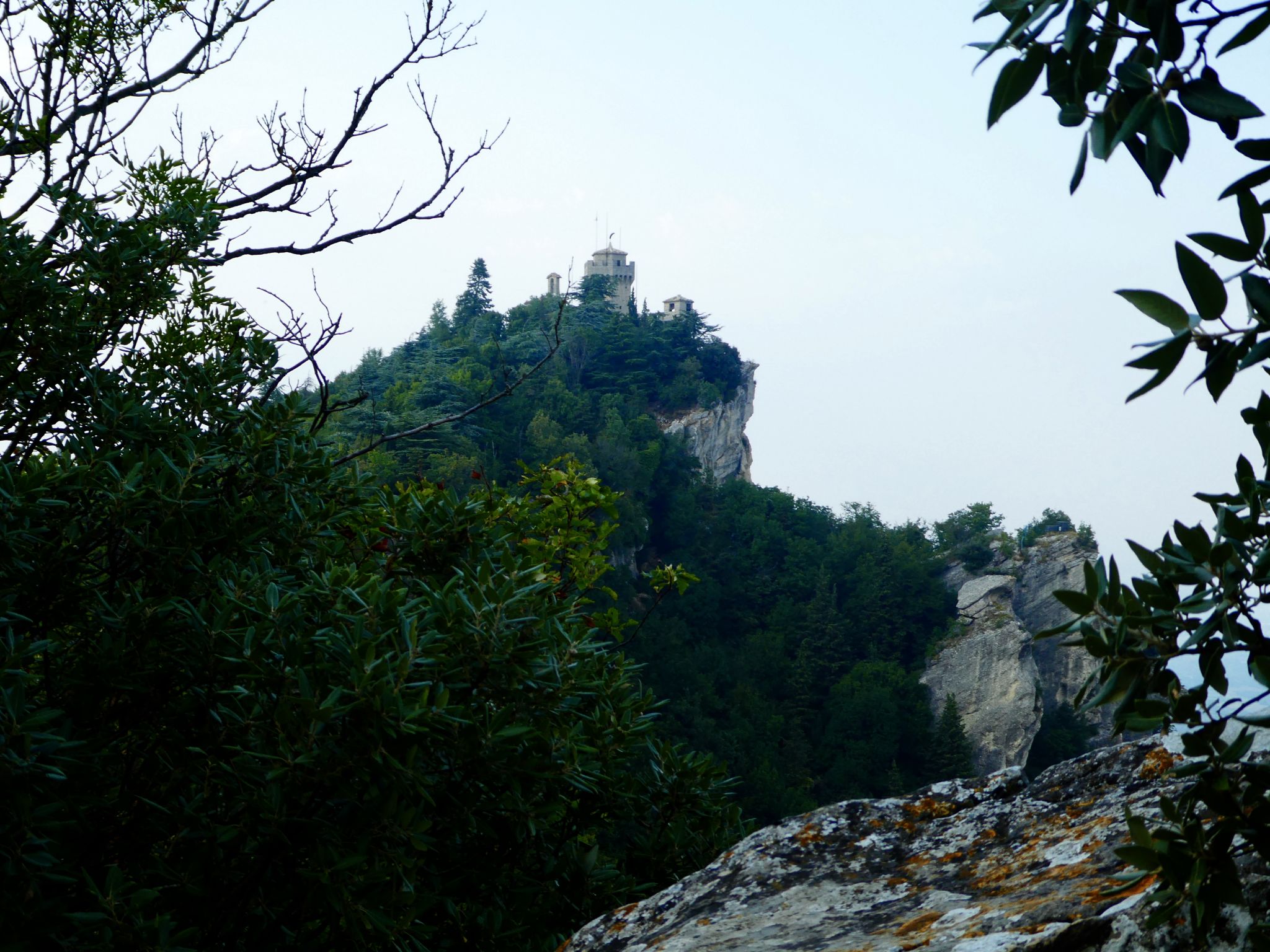 The castles themselves are not all that remarkable.  It’s their position in the landscape, perched on rock outcrops rising out of the densely forested ridges, which makes them special.

San Marino hosts festivals all through the year, including a magic festival, film festival, green festival and international arts festival.  We were slightly regretful at missing the annual BBQ and Beer Festival, but were lucky to arrive during San Marino Comics.  Not comedians – comic book characters.  The streets were full of cartoon figures, onesie-clad furry animals and, stretching the theme somewhat, characters from Pirates of the Caribbean and Game of Thrones.  Fun.

There’s also a series of oddball museums which, hand on heart, don’t seem to have any particular nexus to San Marino.  There’s a vampire museum, a museum of medieval torture instruments and a wax museum.

And a really fun one called the Museum of Curiosities, a grab bag of exhibits about zany inventions, obscure historical facts and world records.  There’s a petrol-operated hair dryer, medieval clogs on stilts for use during flooding in Venice, and an 18th century pine cone shaped knick knack designed to be filled with honey and worn over the genitals ‘to draw out fleas’.

We loved this one – a dog-powered roasting spit. 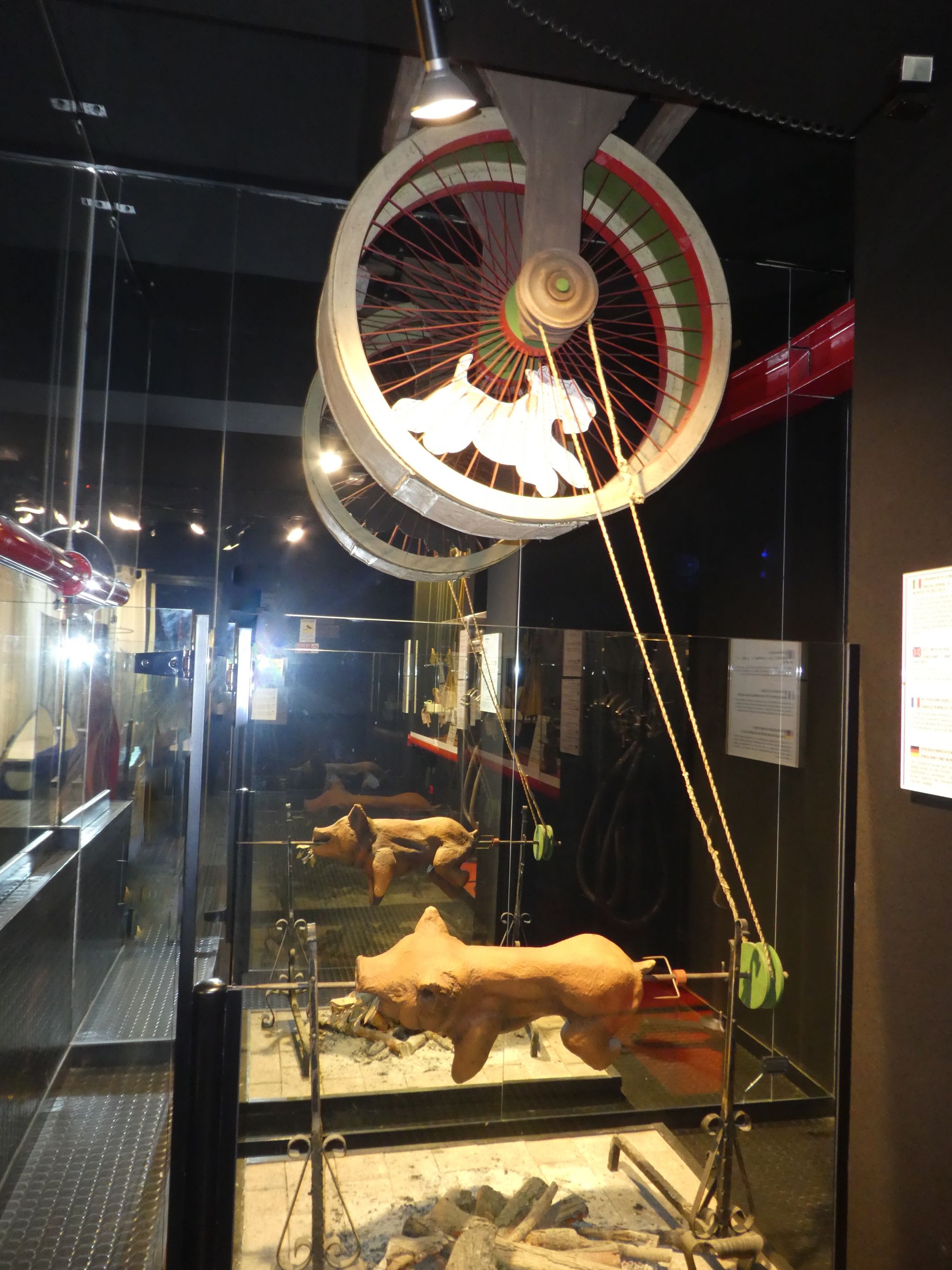 And this one.  We have seen a few Monty Pythonesque things on our travels, but the story of St Simeon takes the prize. 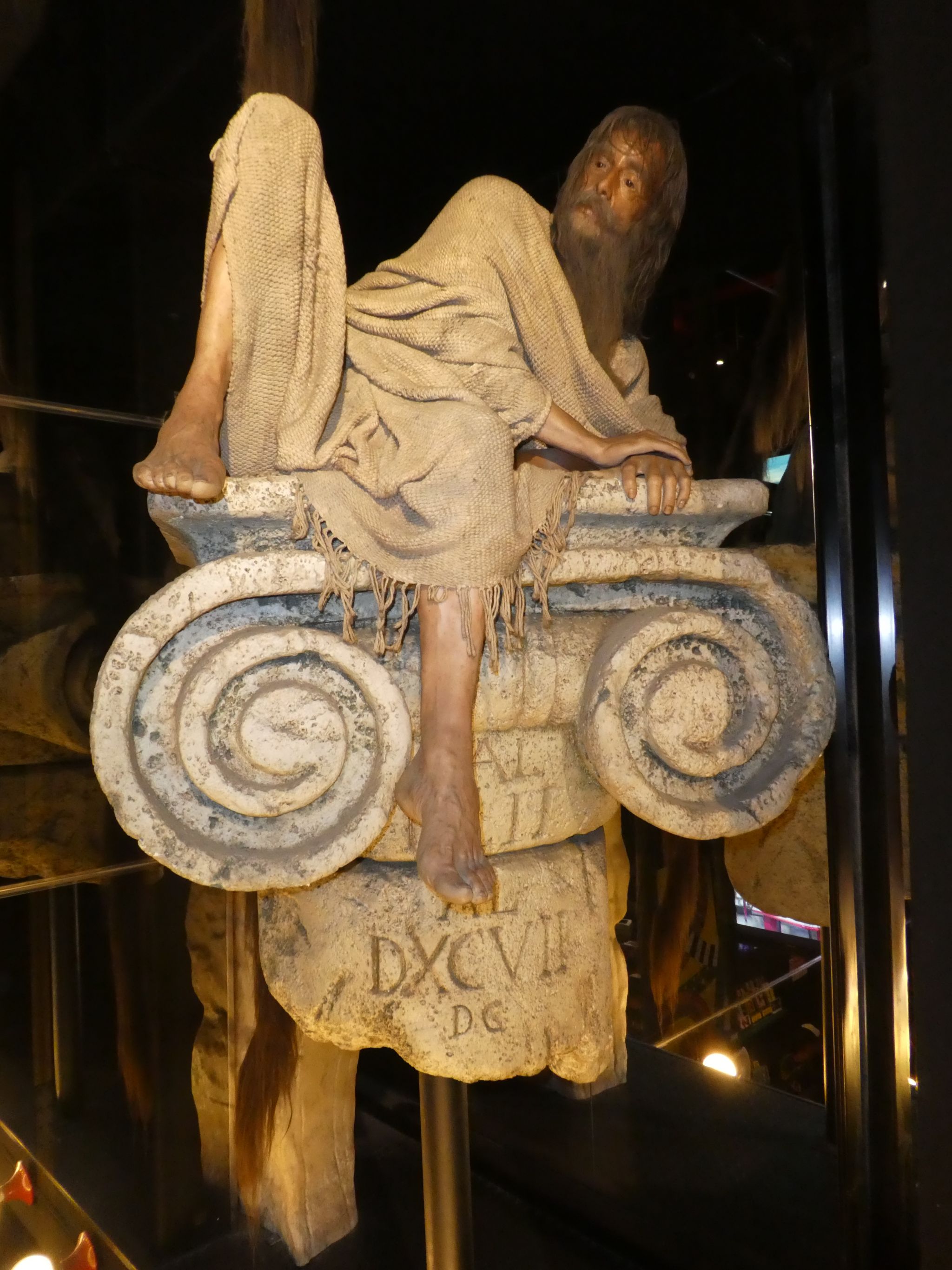 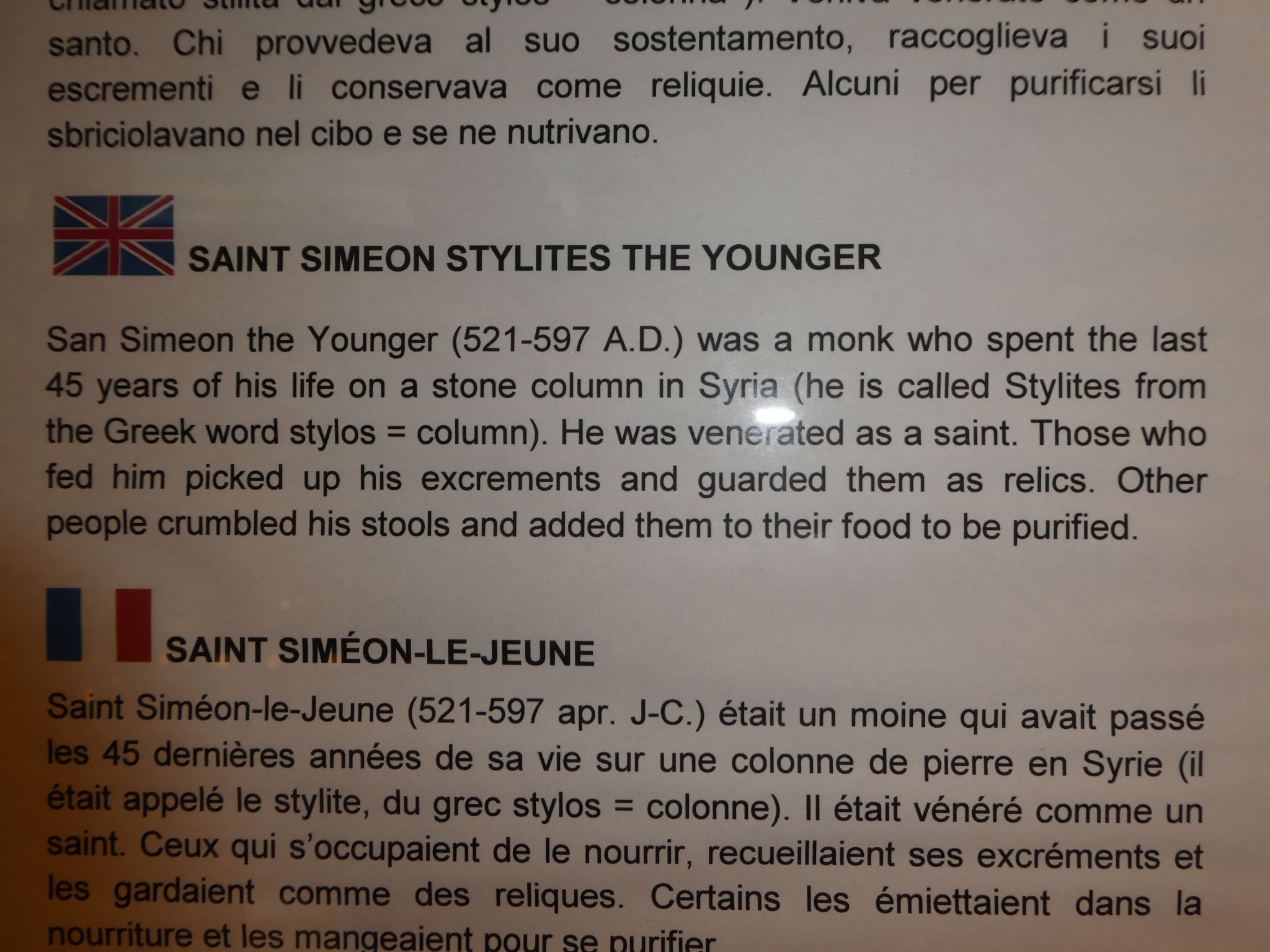 Really, if you put that in a movie people would say it’s too bizarre to be credible.

A Museum of Curiosities is perhaps fitting for San Marino.  The country itself is something of a curiosity.  Here’s a few ‘fun facts’ to finish.

At 61 square kms, San Marino is the world’s smallest republic.  When Nauru gained independence, it challenged for this title, but failed.  Nauru has a land mass of only 21 square kms, but has territorial jurisdiction over 431,000 square kms of waters surrounding it.  The hidden advantage of being a landlocked nation.

San Marino has the smallest military force in the world, having ceded its external security arrangements to Italy in the late 1800s, yet it managed to maintain neutrality in both world wars.   Its tiny army still has an 80 member Crossbow Corps, with a uniform unchanged since medieval times.

It took in 100,000 persecuted Italian and Jewish refugees in WWII, just over 10 times its then population.  Remarkable.

It has the highest rate of car ownership in the world, and is the only country with more vehicles than people. That’s slightly ironic when you consider there are only 220 kms of road in the entire country.

San Marino had the world’s first democratically elected communist government – a coalition which governed from 1945 to 1956.   It has had more female heads of state than any other country.  We are not suggesting a link between these two facts.

Enough.  Time for another bowl of pasta.