The Cinque Terre (“Five Lands”) is a little strip of the Italian Riviera with five small centuries-old seaside villages of traditional houses and tiny harbours linked by footpaths through the vineyard terraces which rise steeply up the hills behind.

The best way to see the physicality of the coastal strip is from the sea, so taking a village-hopper ferry which stops at all of the towns (except the middle village, which is on a hilltop and doesn’t have a port) is a must.

And if you just want to visit the villages, it’s easy to do via a train which runs regularly along a line cut through the cliffs in the 1800s.  The villages are so close, it’s only about five minutes between stations.

But to do this would mean missing the spectacular views on offer from the trails which link the settlements.  The Sentiero Azzurro (Blue Trail) roughly follows the coast, climbing up and down the cliffs and dropping down into each village.

Unfortunately, parts of the Blue Trail were destroyed by floods in 2011, and the sections from Riomaggiore to Monterosso, and Monterosso to Corniglia remain closed for repair.  But there are lots of other trails and it’s still possible to visit all the villages by foot as well as reaching other towns and scenic lookouts.

From west to east, here’s a run down.

Riomaggiore looks like it been poked into a crevice in the cliffs. 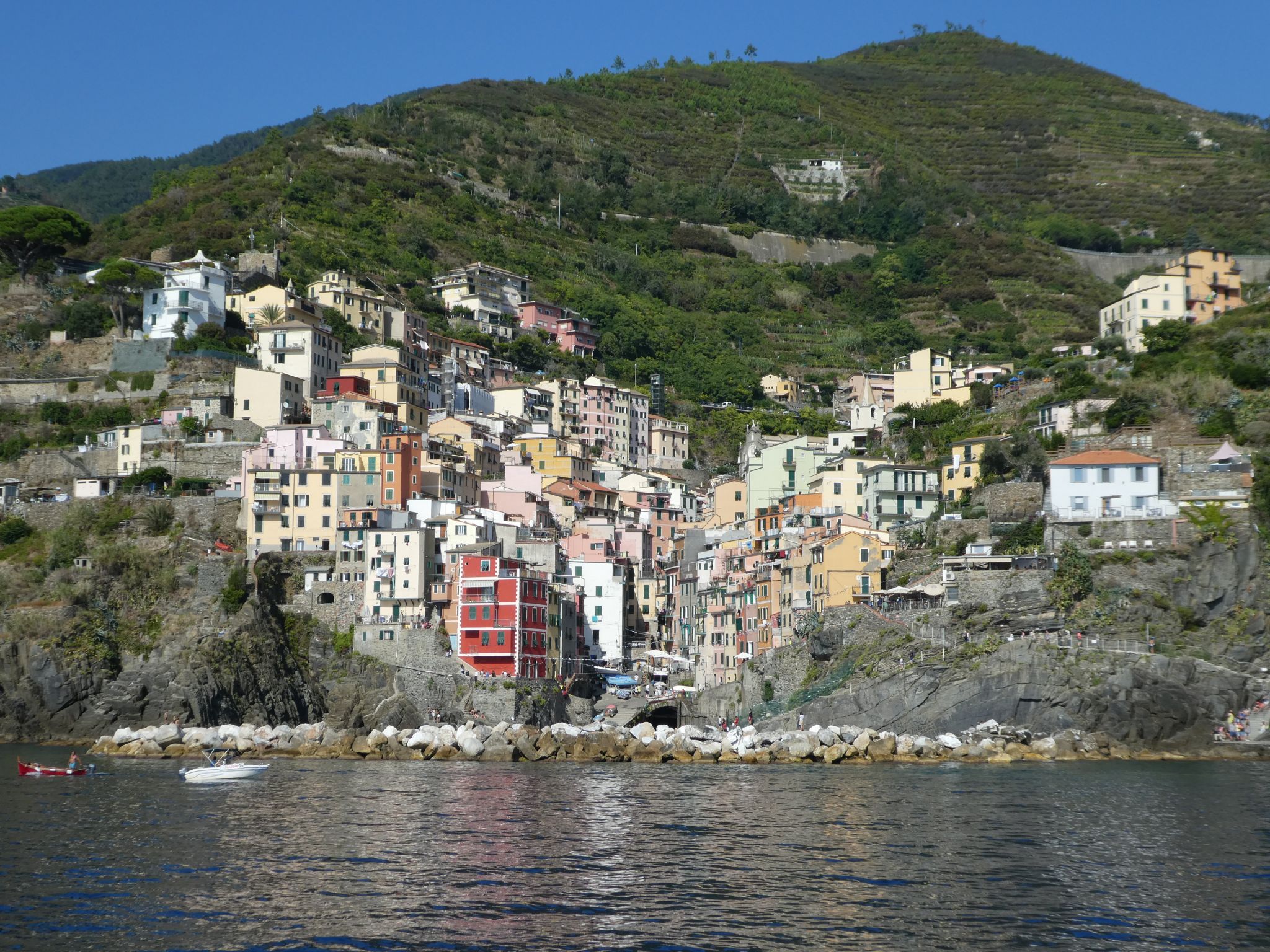 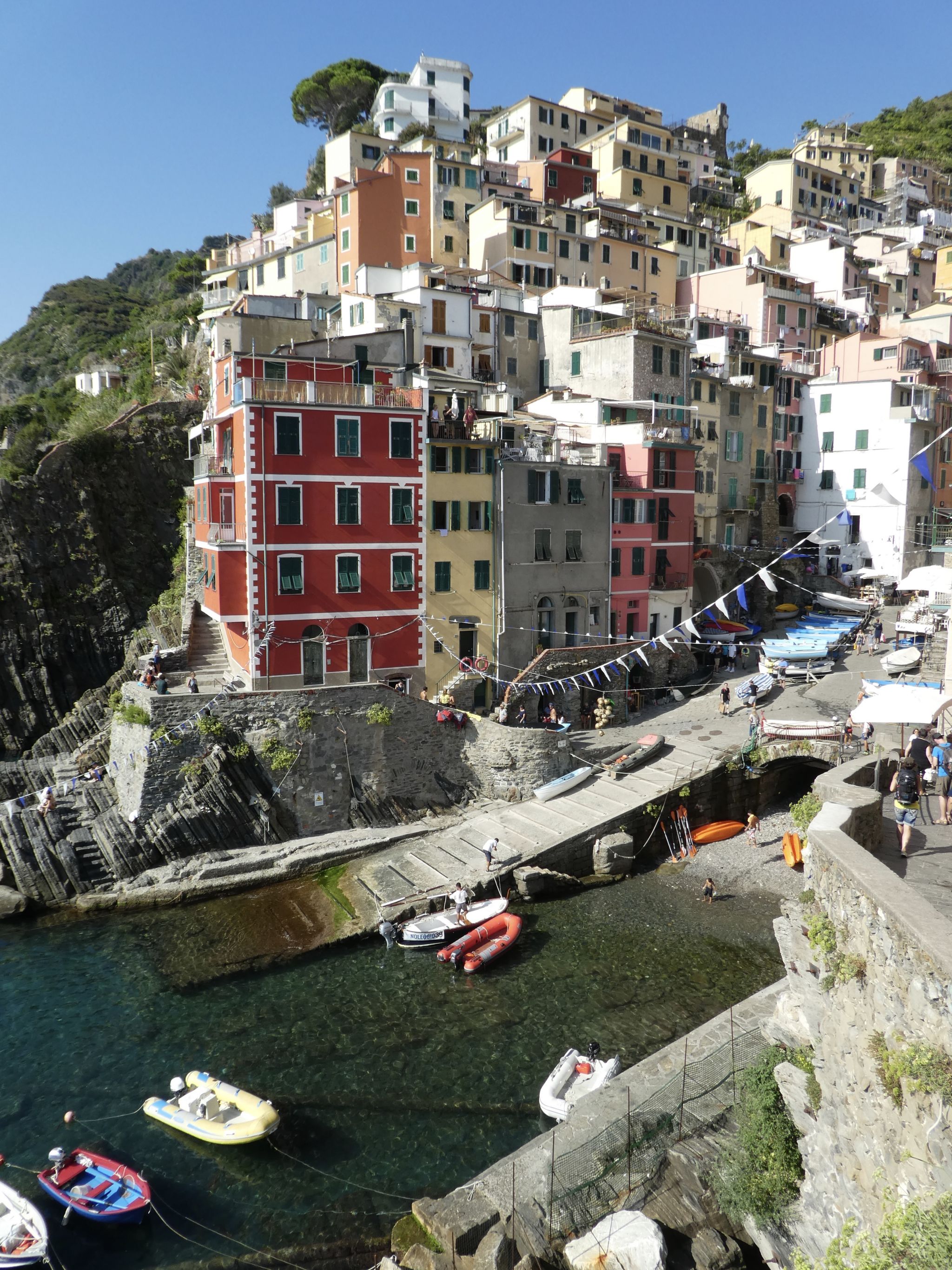 The water in the tiny harbour is crystal clear and although there’s no sandy beach, the it is perfect for swimming right off the rocks. 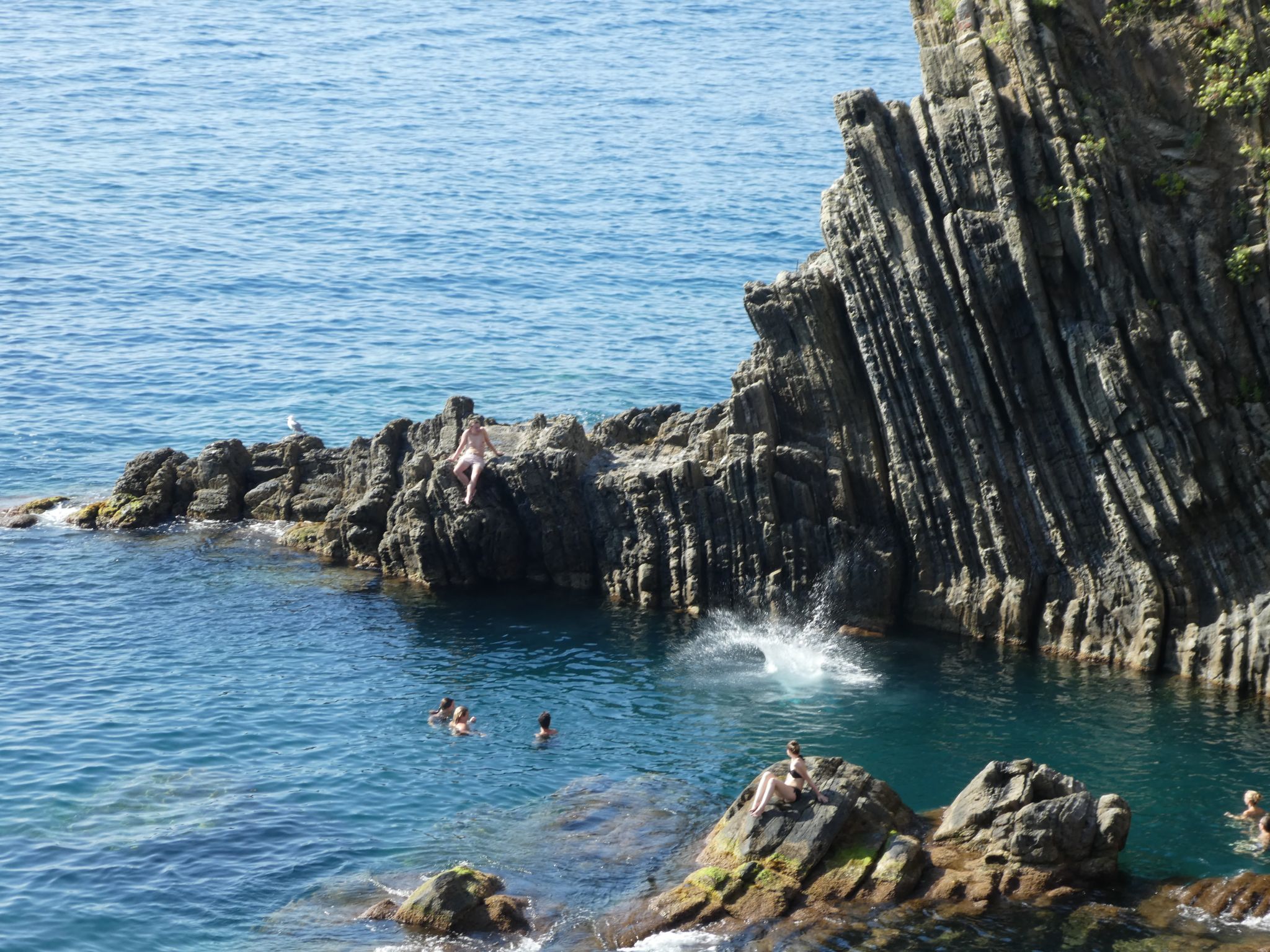 And the town is rather cute as well. 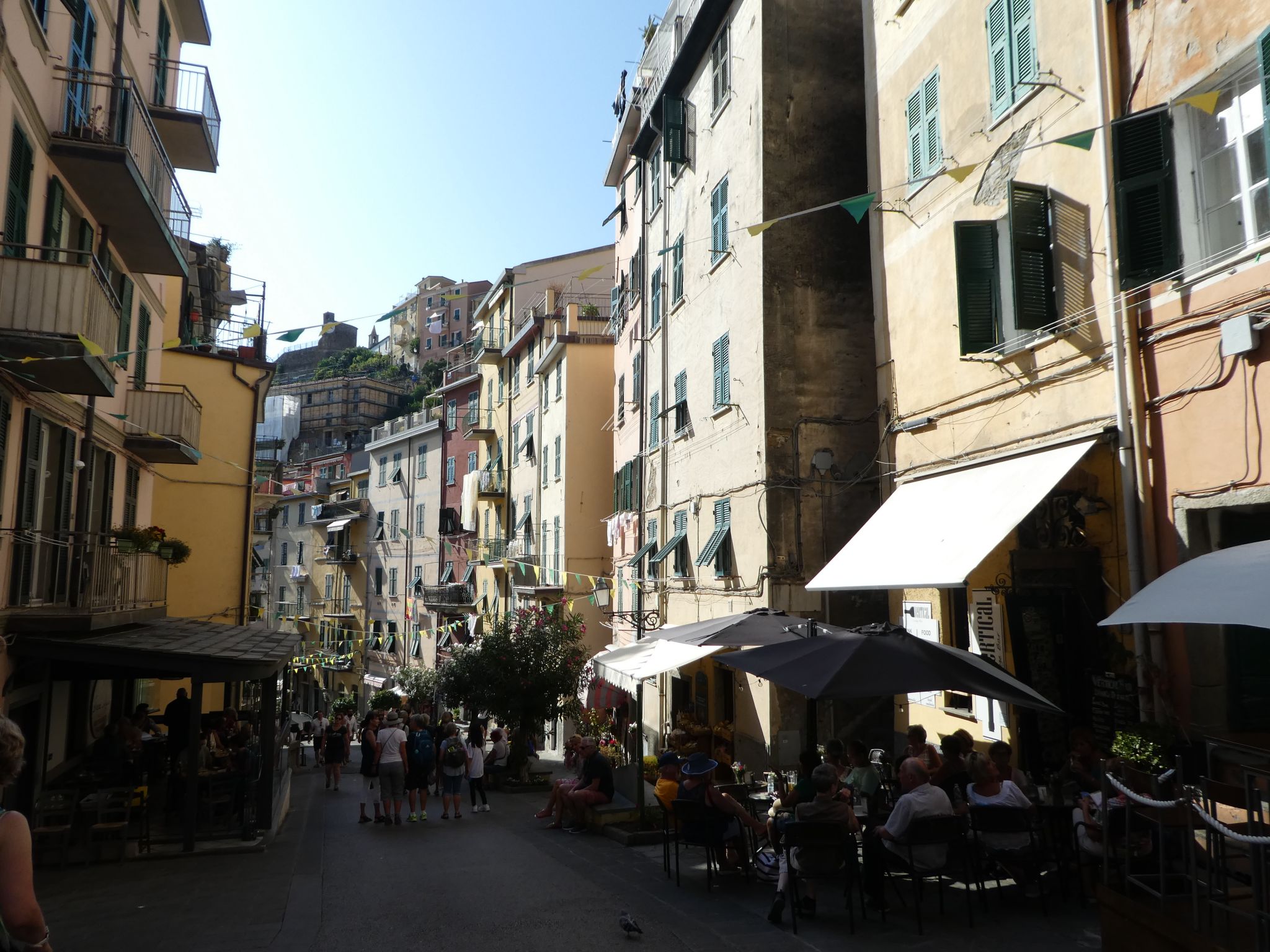 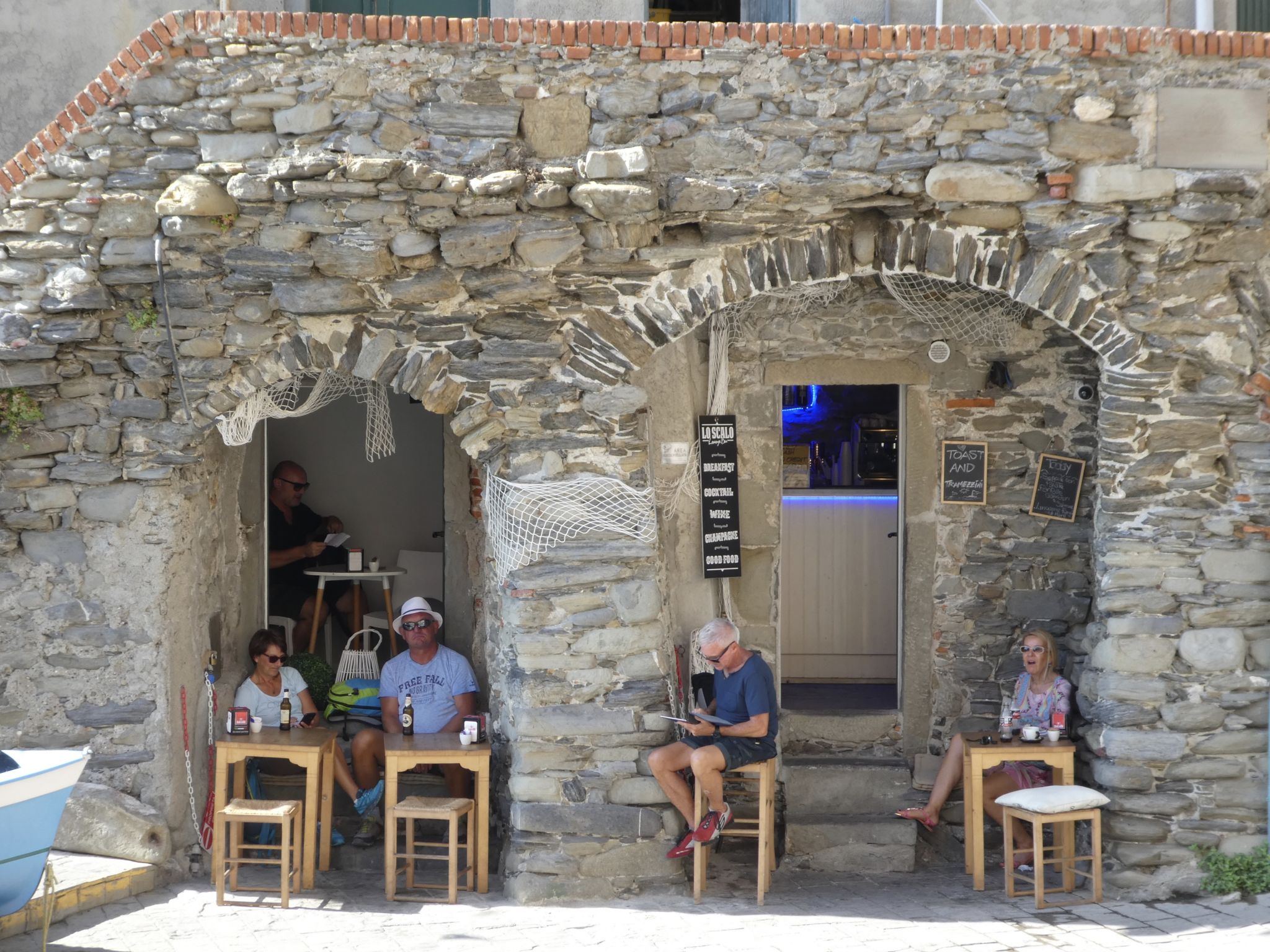 The second village along is Manarola.  It, too, seems tucked into a crevice in the rocks, but it has a bigger harbour and is well set up for swimming, sunbathing and leaping into the sea. 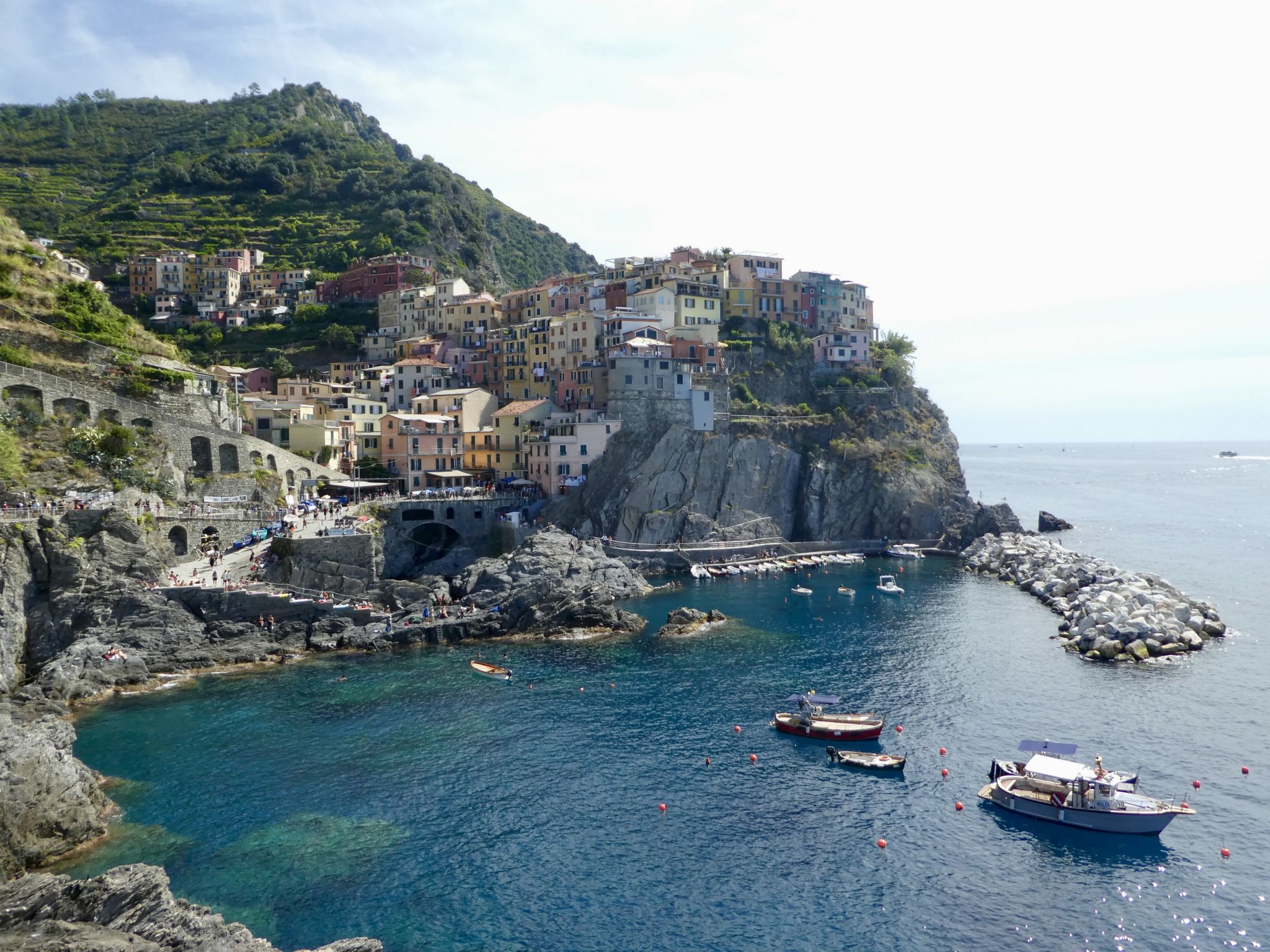 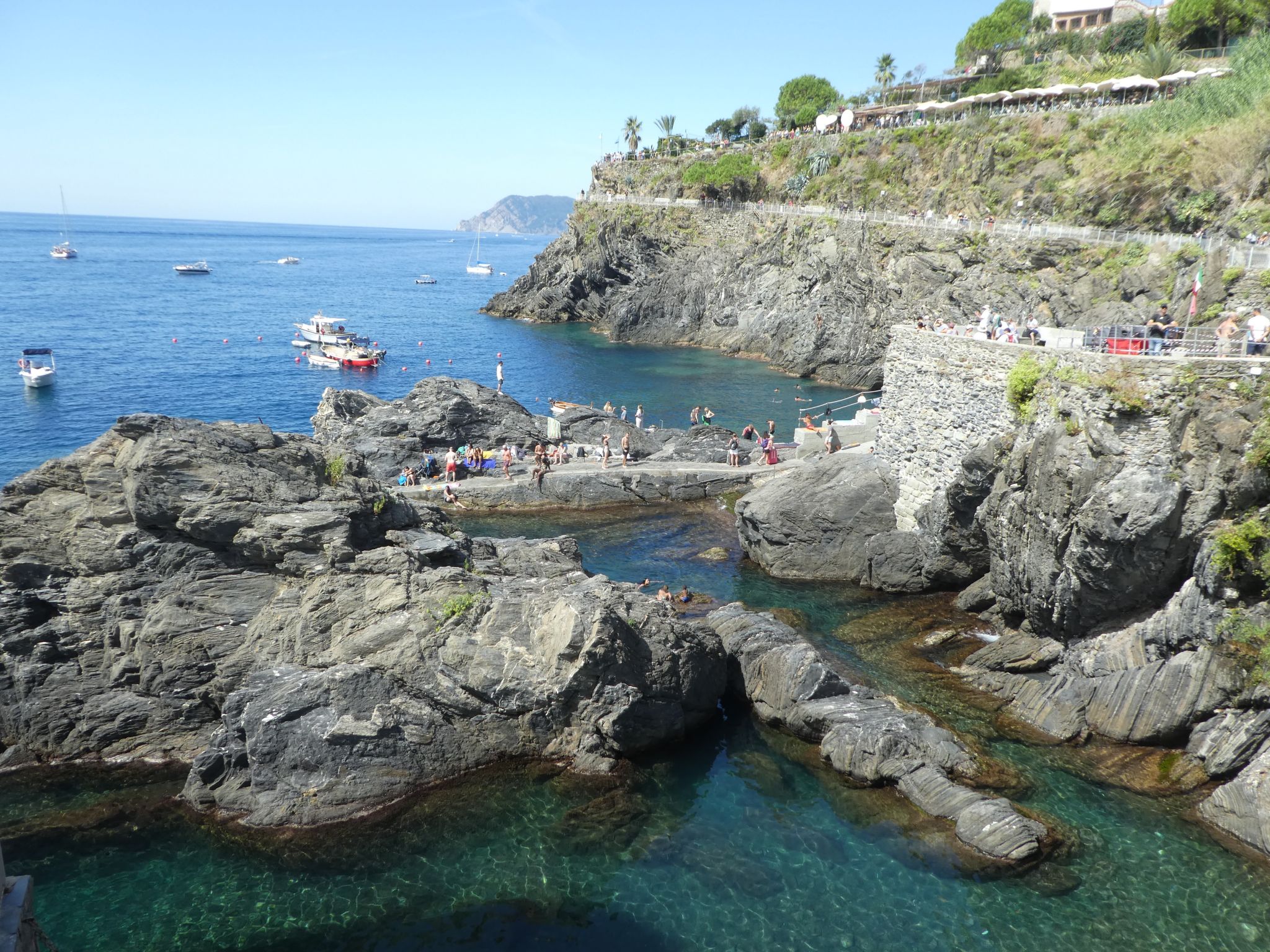 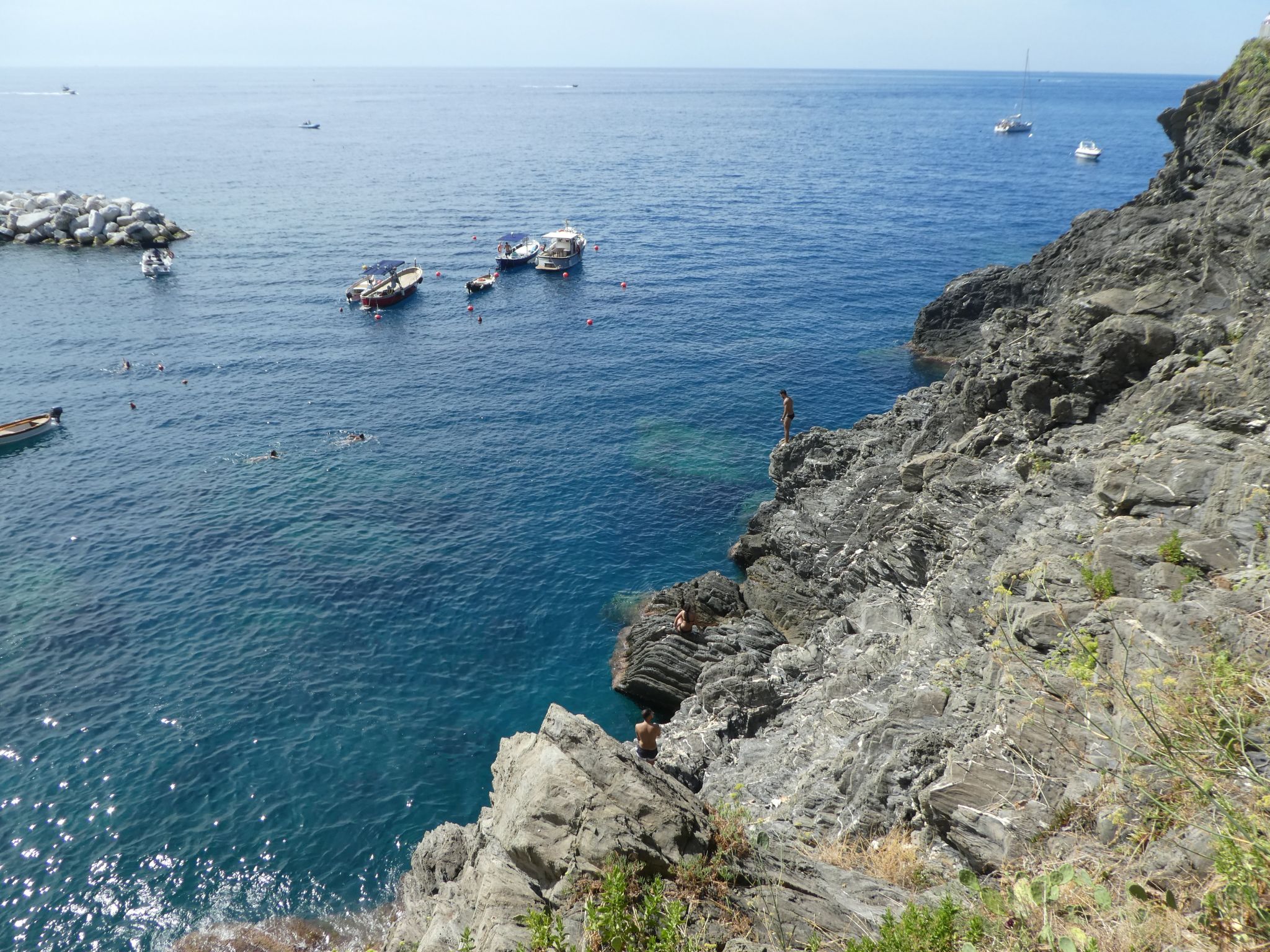 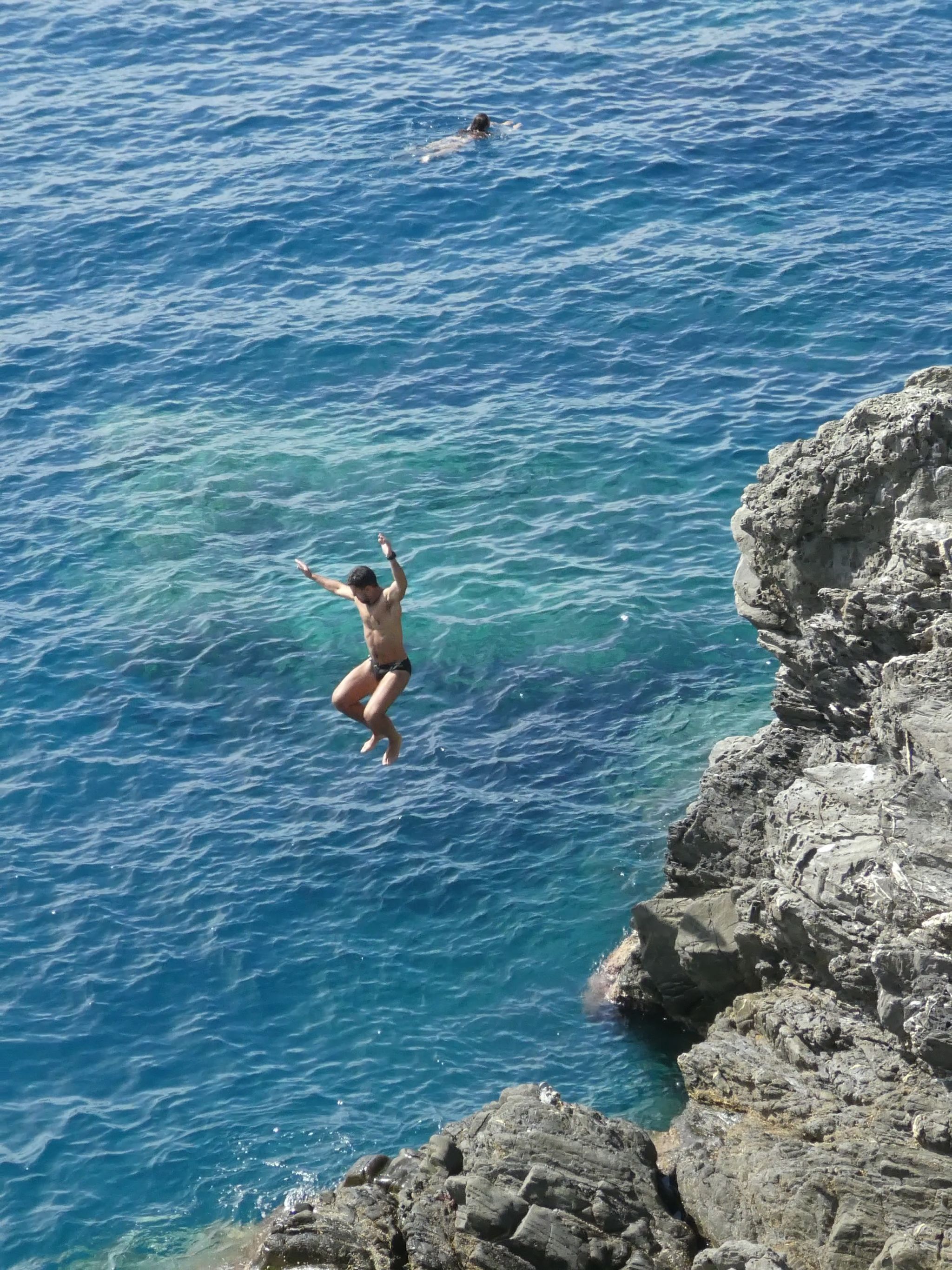 Between Manarola and Corniglia, the Blue Trail is closed but there’s a well defined higher path which runs up through terraced vineyards so steep they use miniature cogwheel railways to transport trolleys of grapes as they are harvested by the pickers. 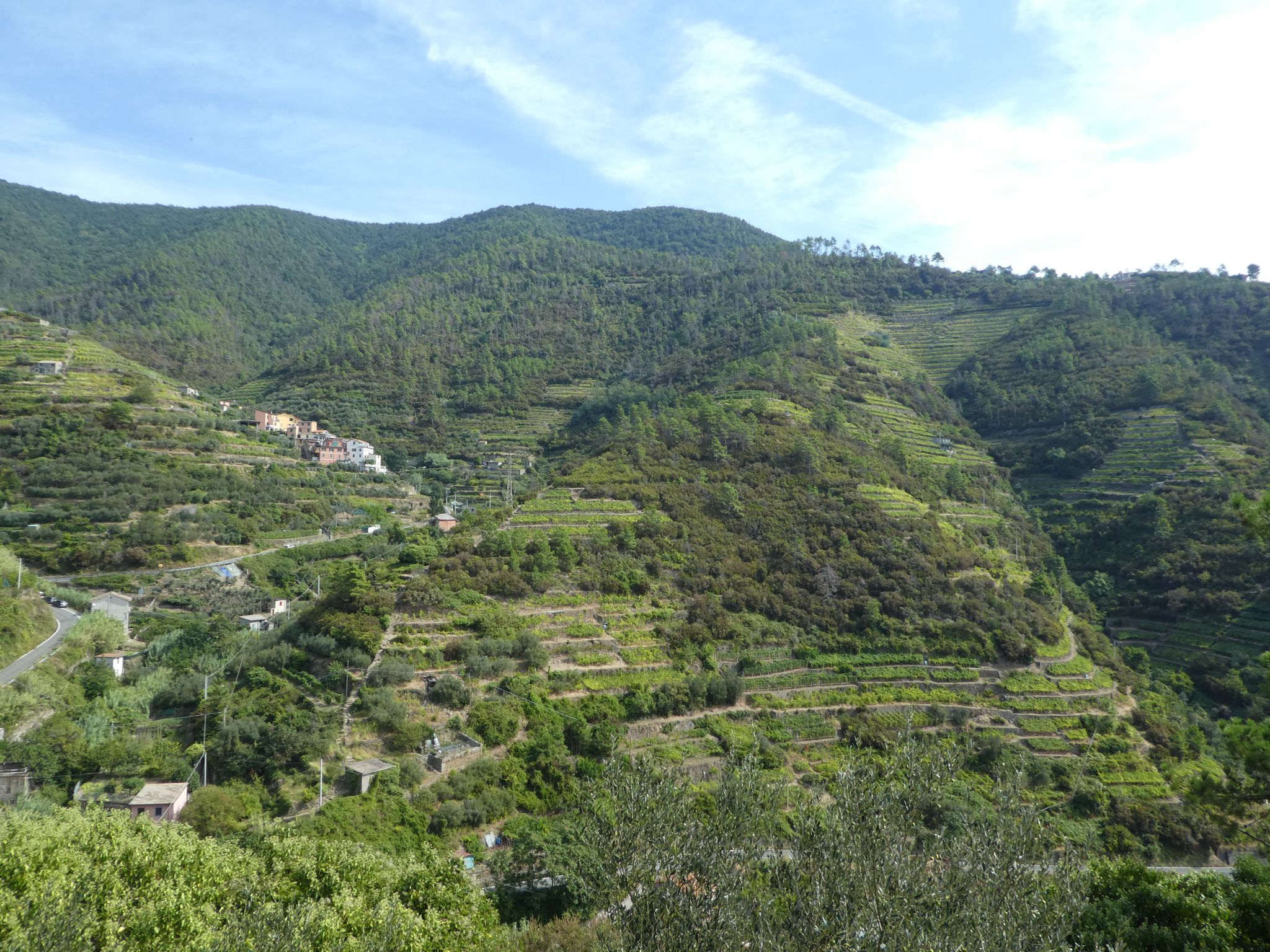 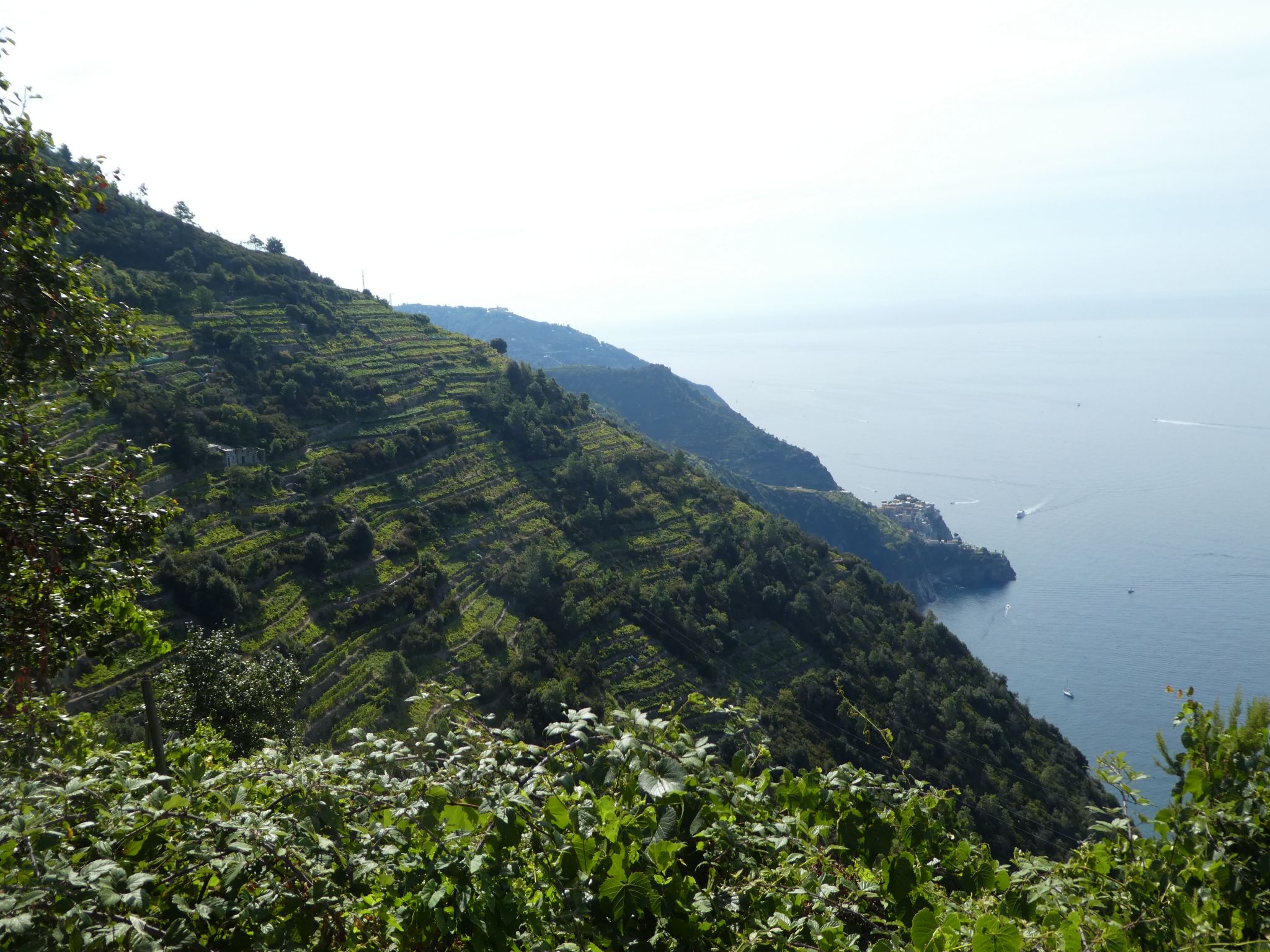 There are spectacular views over the ocean, down to Manarola in one direction and Corniglia in the other. 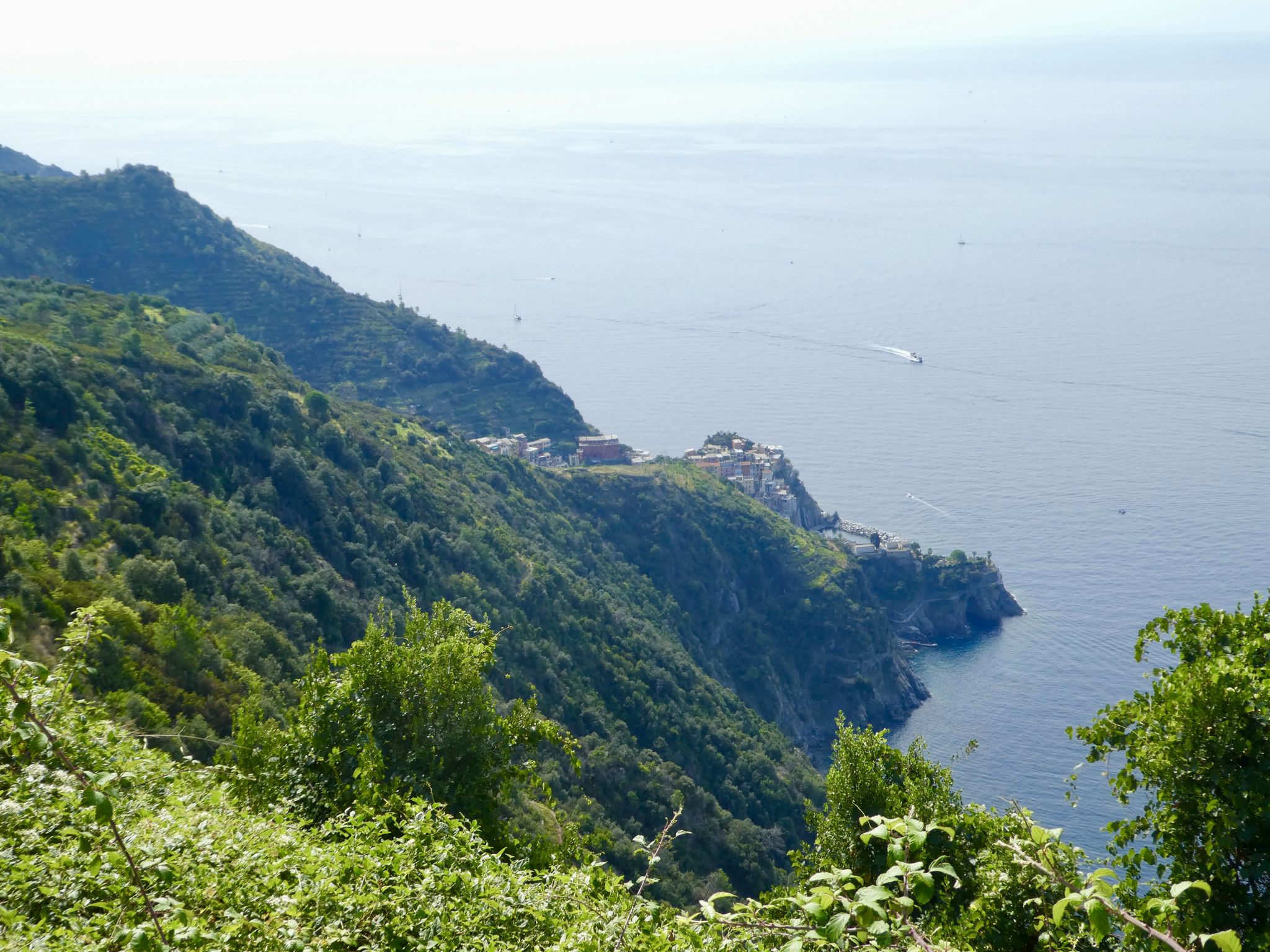 Corniglia is the only one of the villages which isn’t at sea level and doesn’t have a port.  Instead, it’s perched on the cliff top. 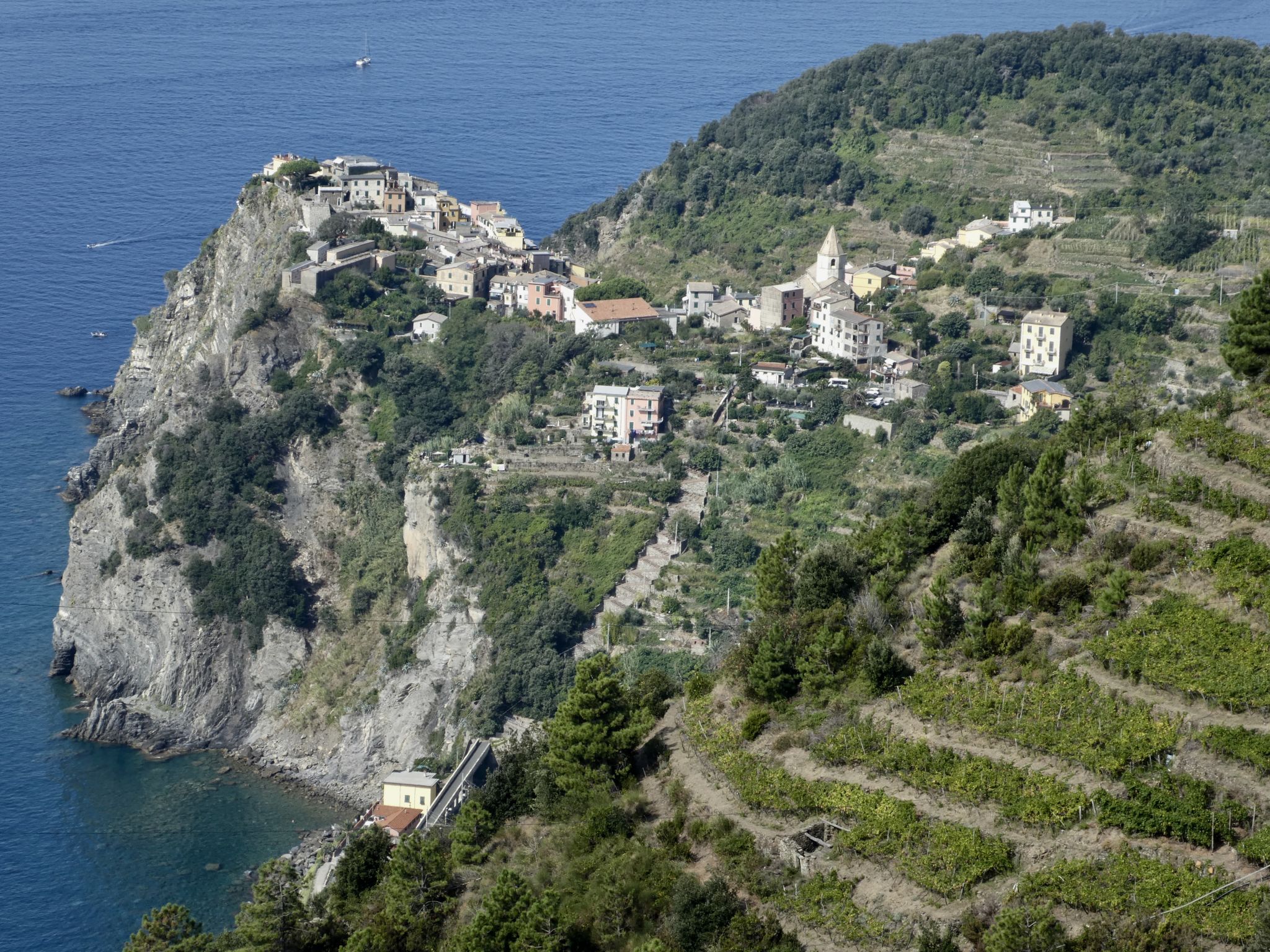 Apparently this makes it the least favoured of the villages for visitors to stay in.  Which in turn made it the most attractive option to us.  Like the other villages, it buzzes with tourists during the day, but at night it’s much quieter.  It’s just as picturesque and there’s some very nice restaurants. 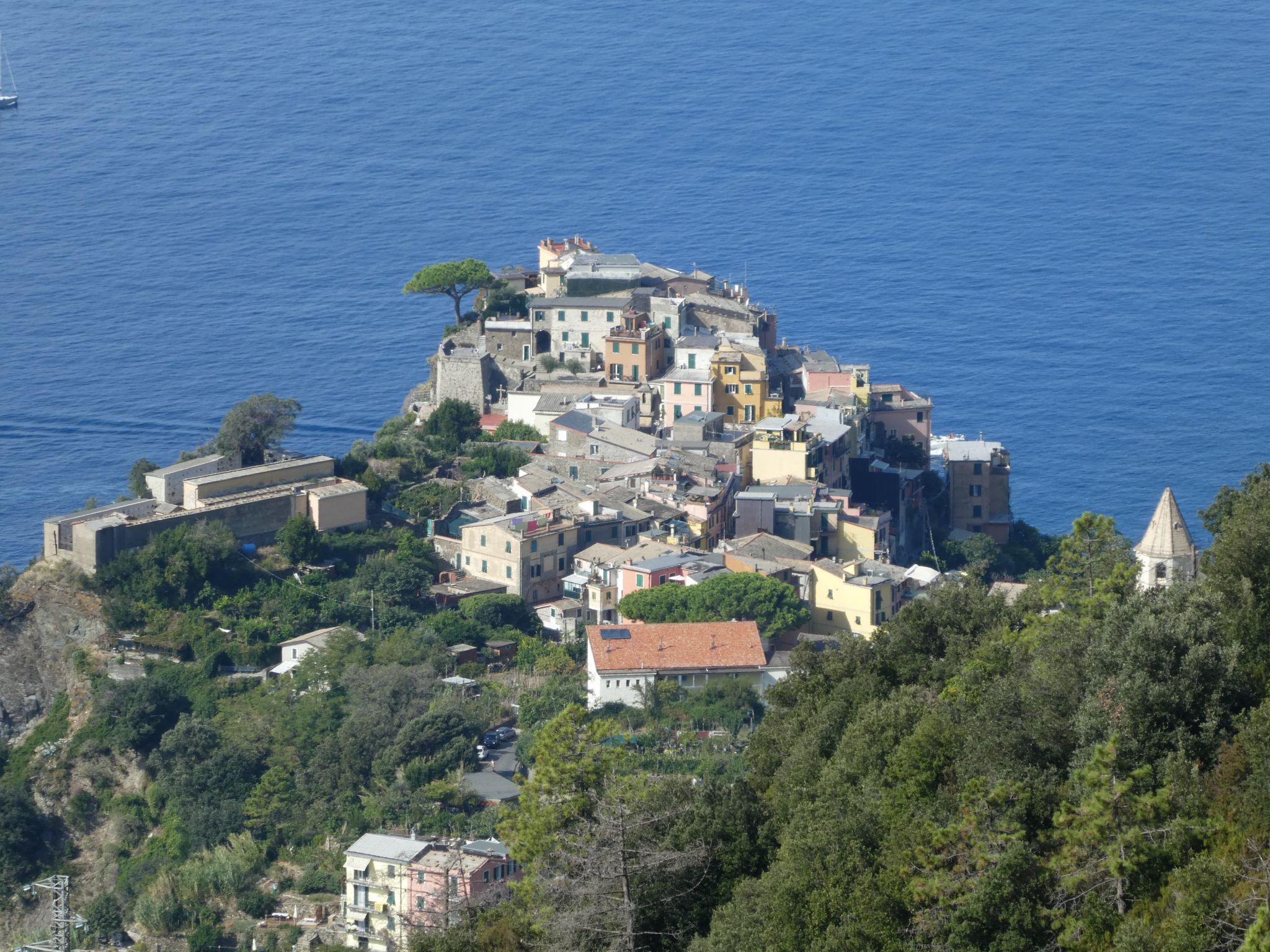 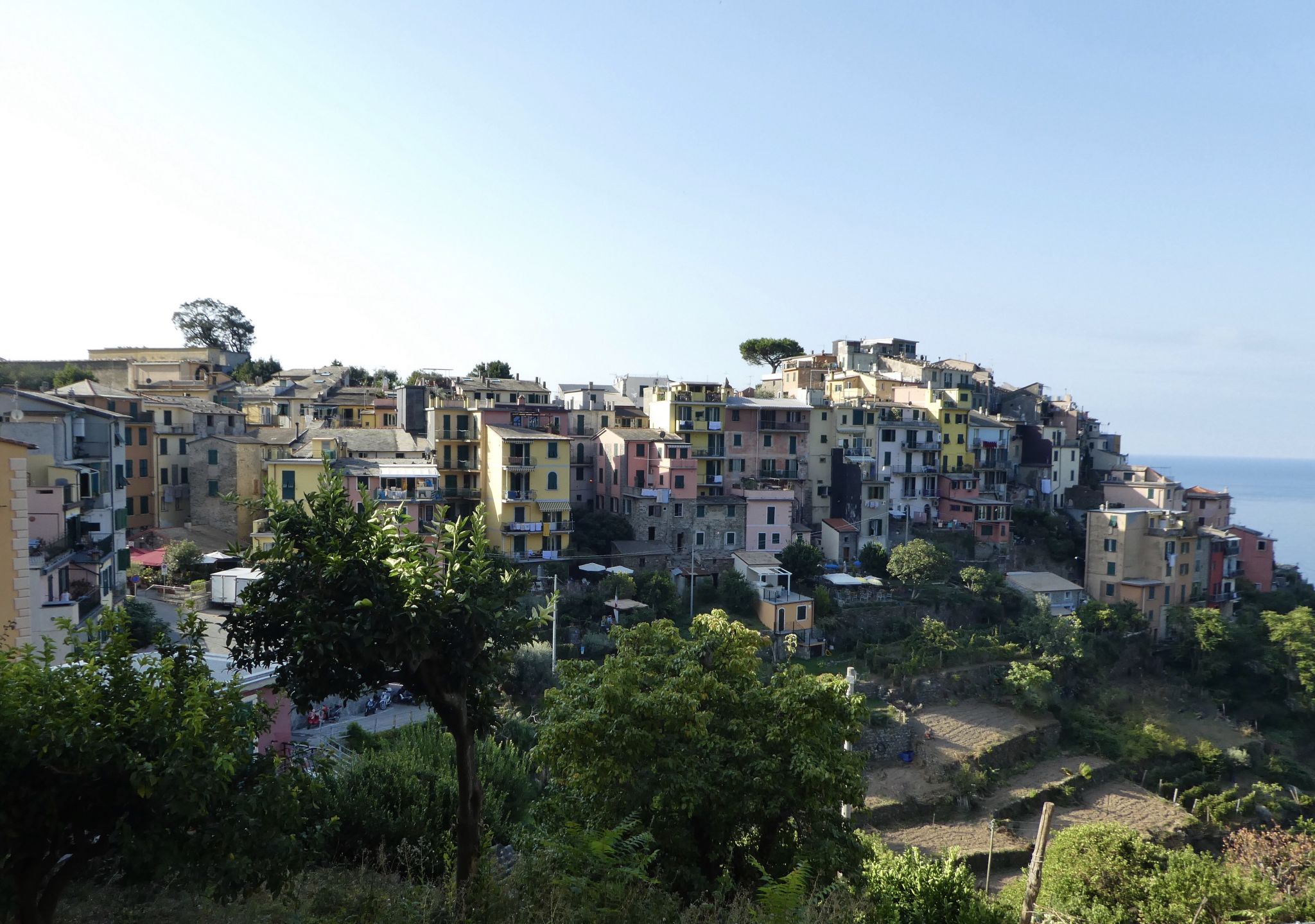 The Blue Trail between Corniglia and the next village, Vernazza, is open.  It’s a popular walk, with a climb up to tiny San Bernardino along the way if you wish. 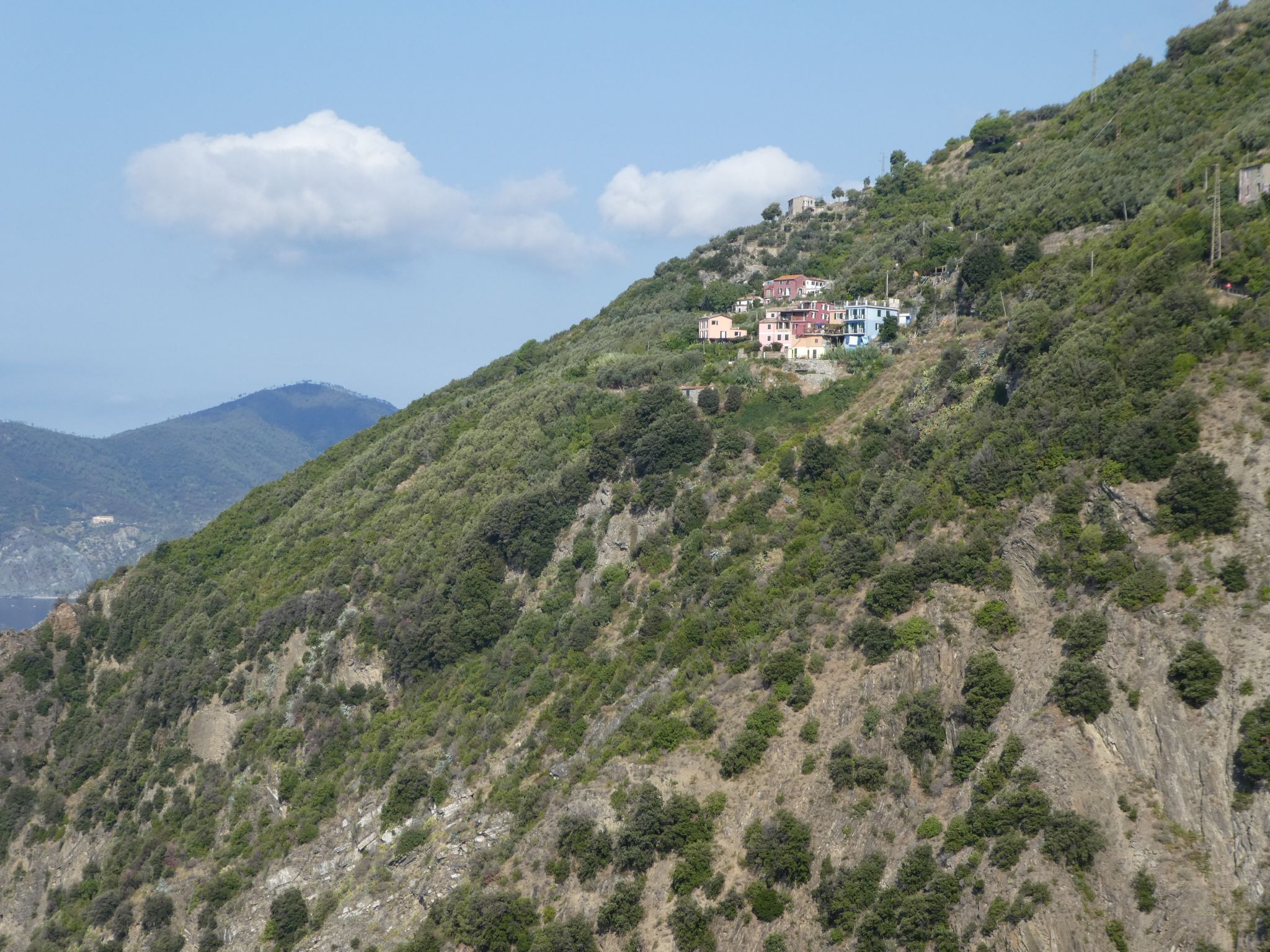 Vernazza has a beautiful harbour with the ruins of a medieval castle to explore.  There’s a small beach right in front of the main piazza from which tiny lanes climb steeply back from the waterfront.  It’s generally regarded as the prettiest of the villages, and we think that’s probably right. 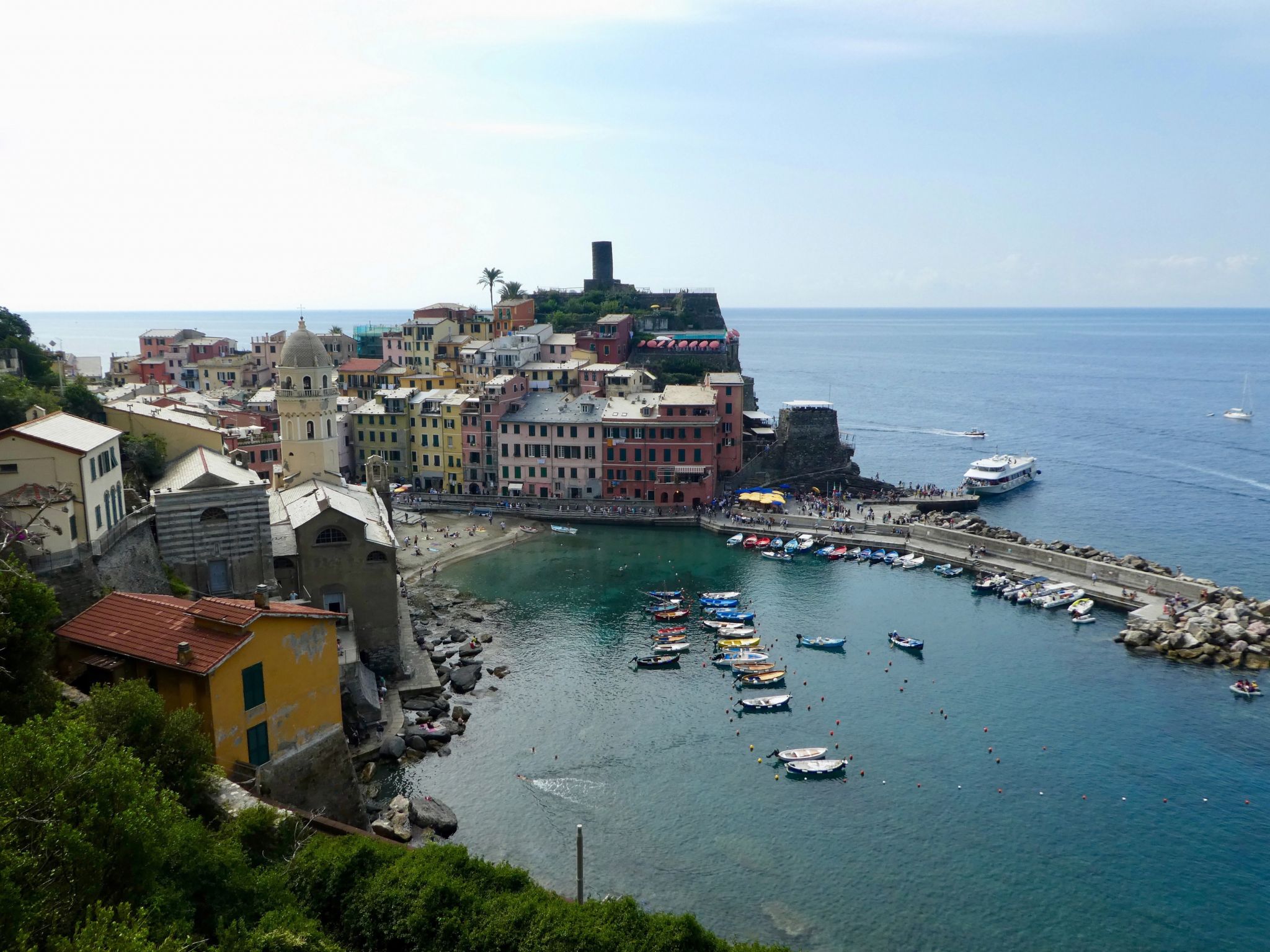 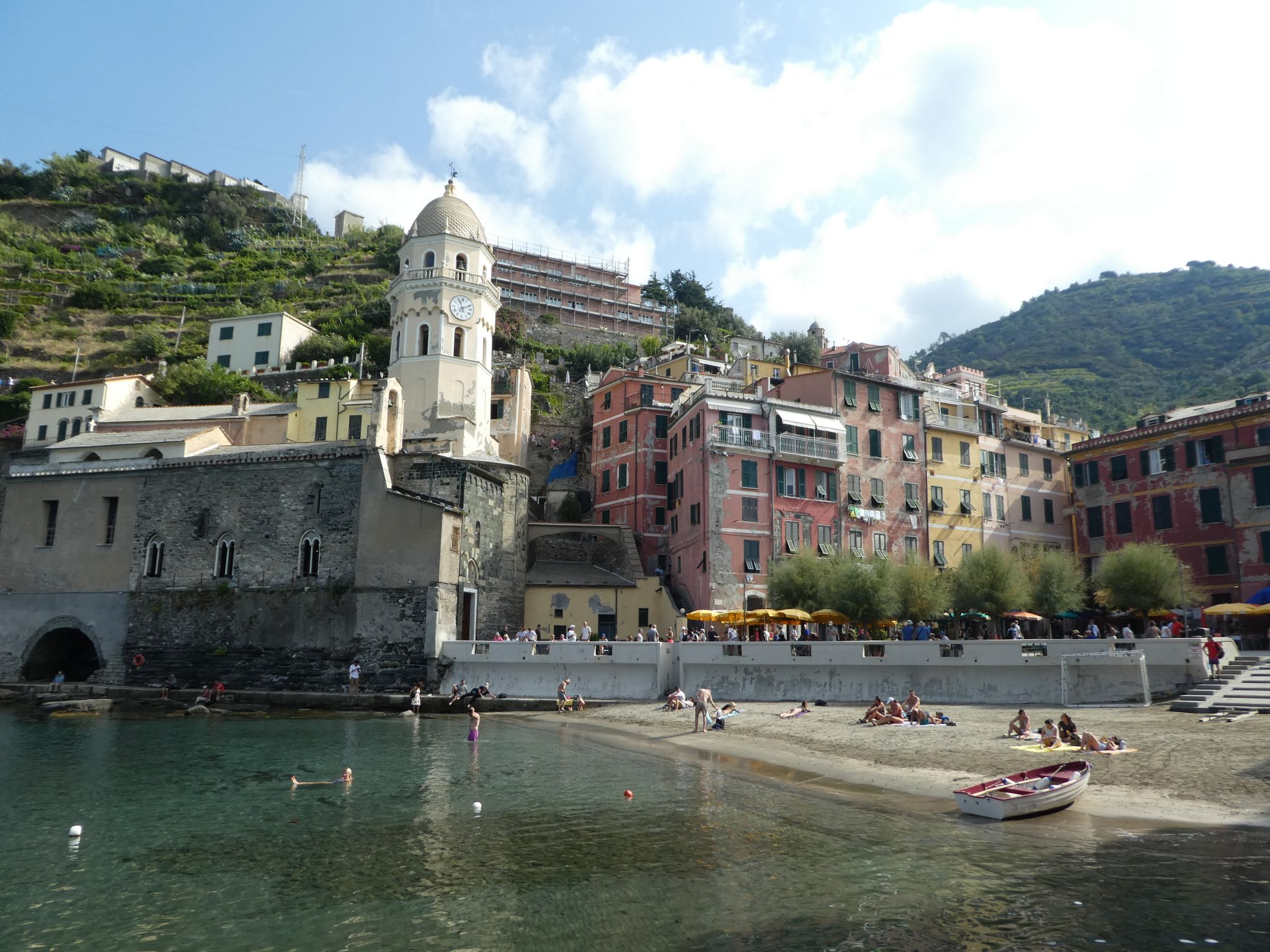 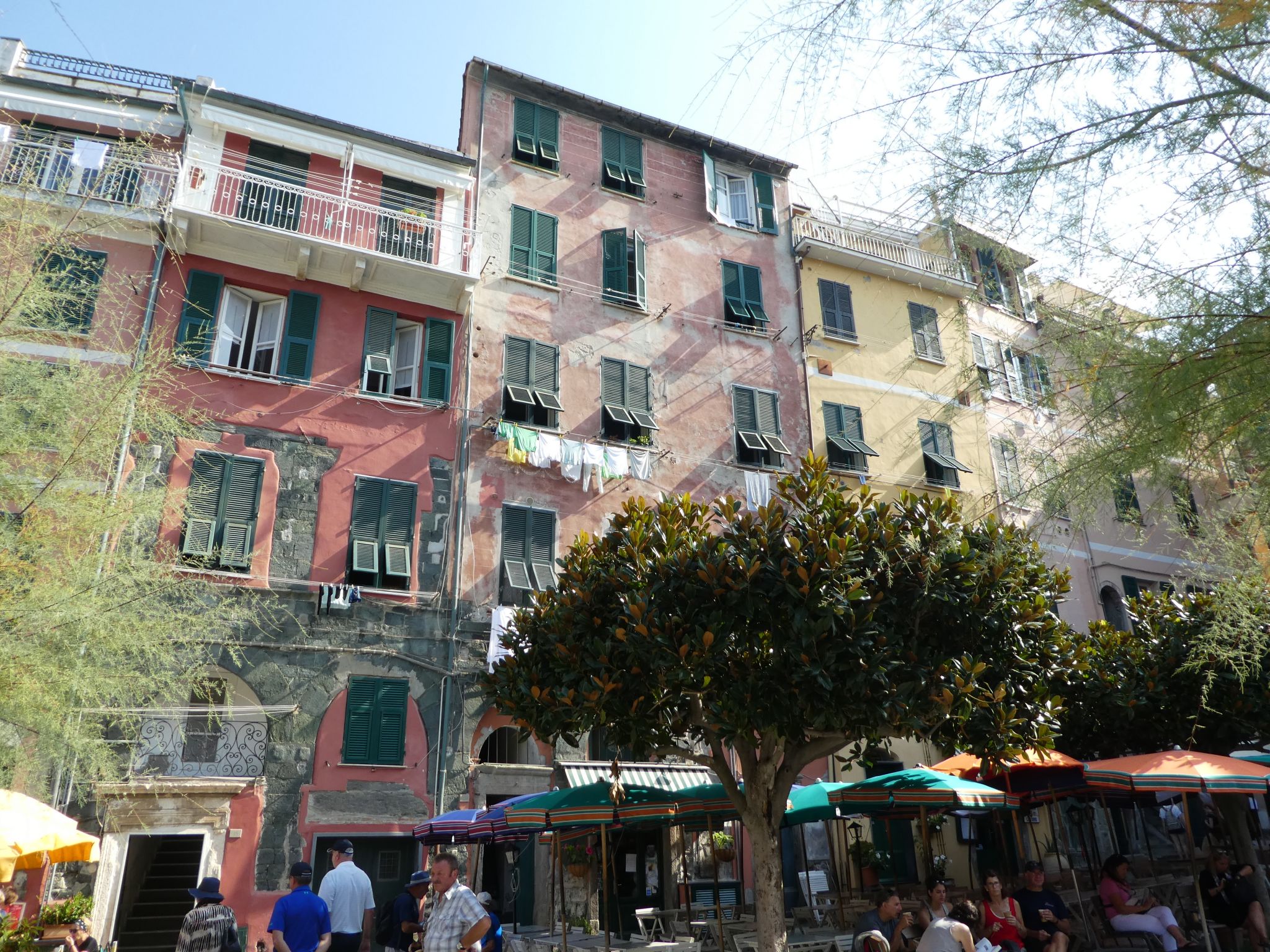 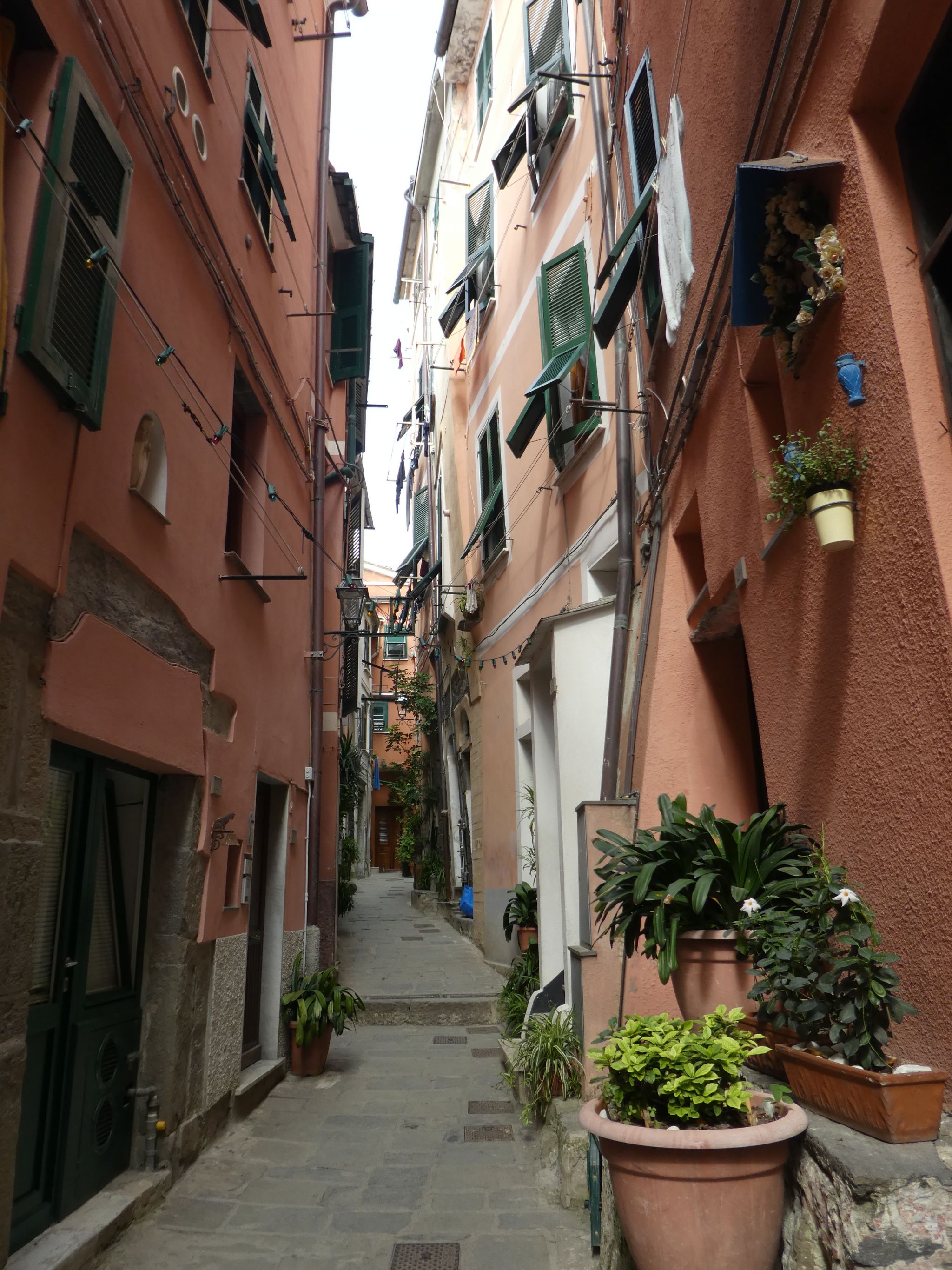 Between Vernazza and Monterosso the trail gets very busy, as many people stay in Monterosso and if they only do one walk, the one from Monterosso to Vernazza is it.  As we were coming from Vernazza, luckily most of the walkers were headed in the opposite direction so we had a fairly clear path.  Again there’s vineyards over the hillsides, and spectacular views out to sea and along the coast to Monterosso. 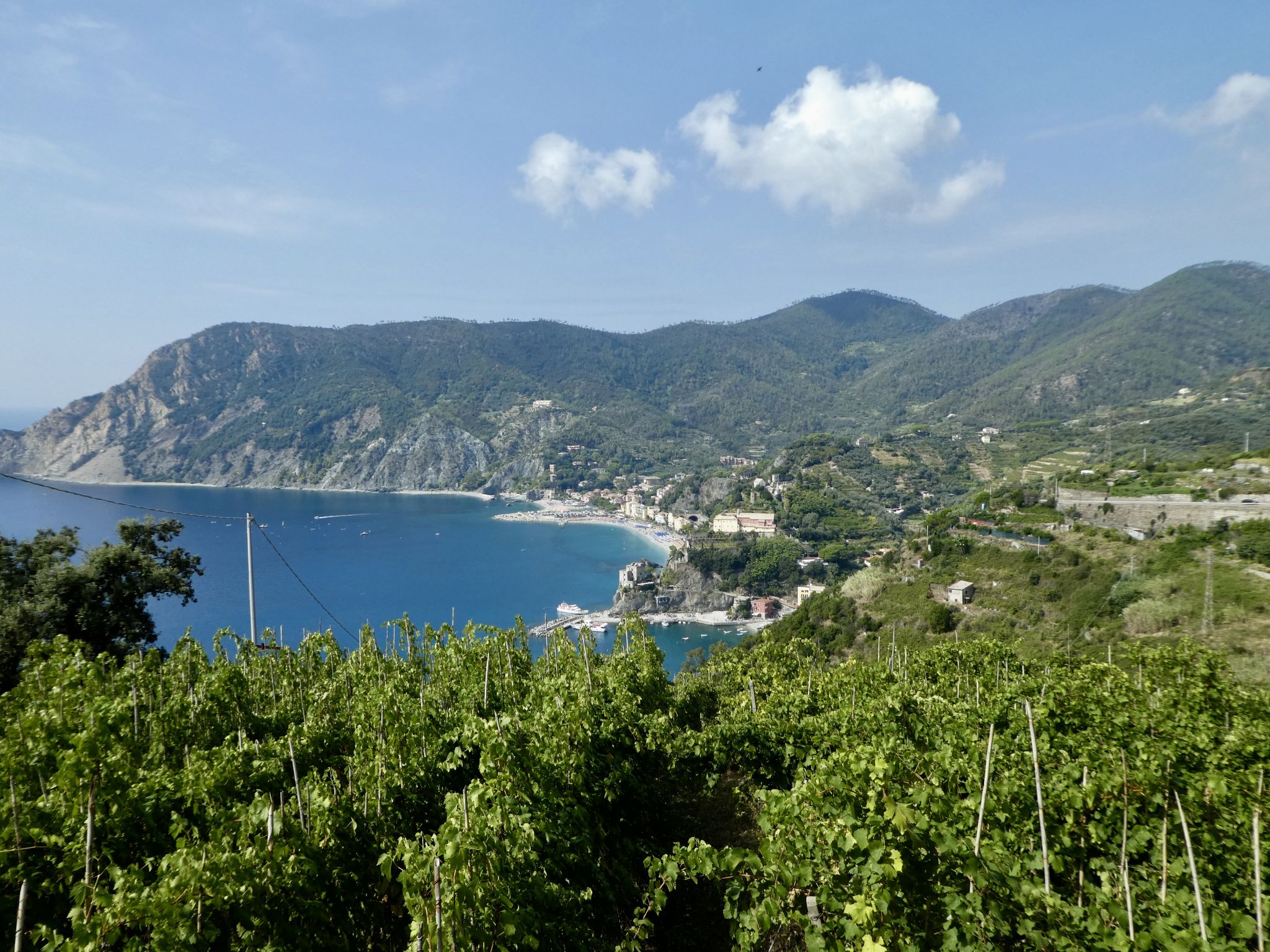 Monterosso is more of a town than a village.  It has a decent strip of beach, so a fair amount of hotel infrastructure has developed here. 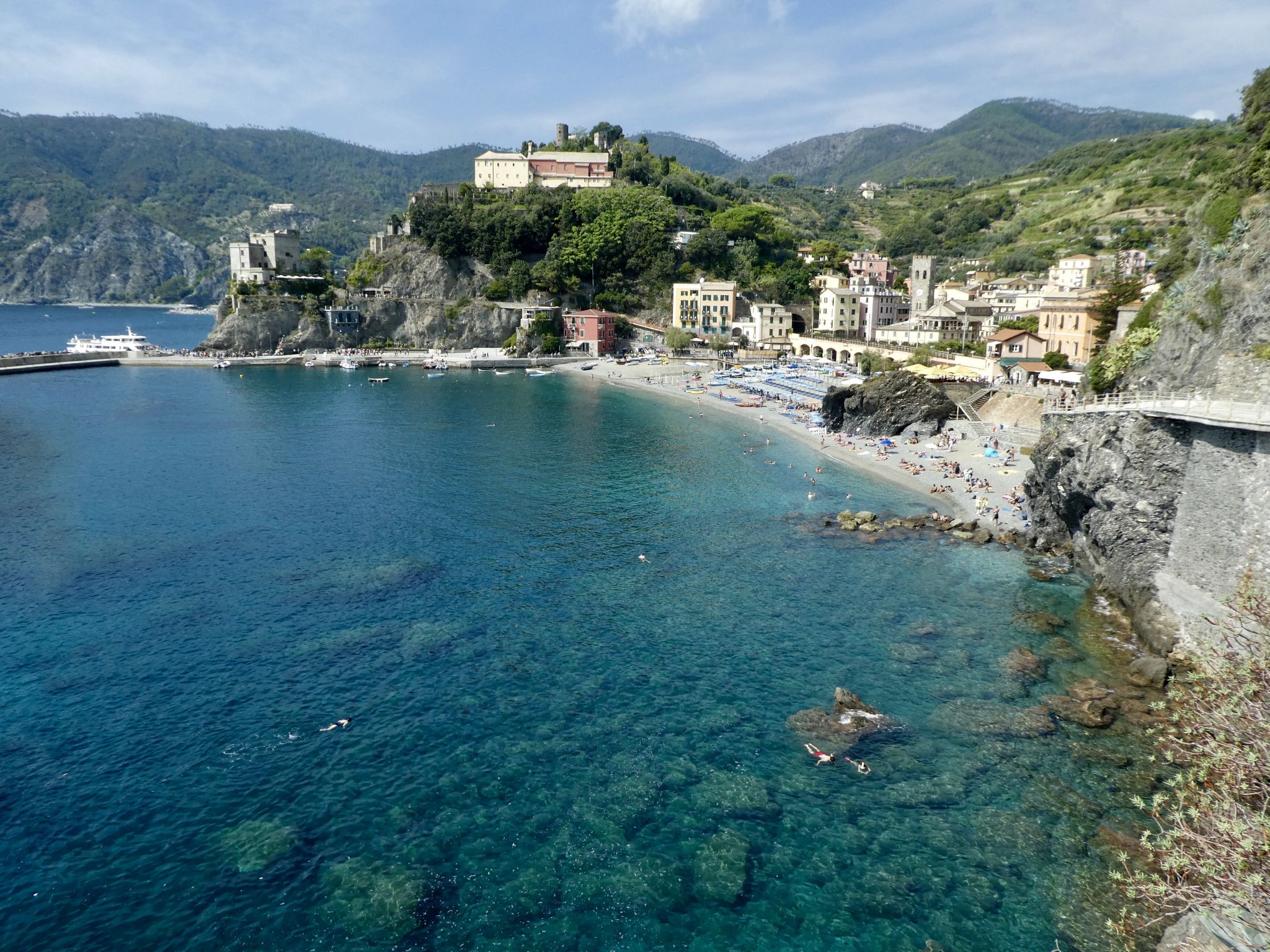 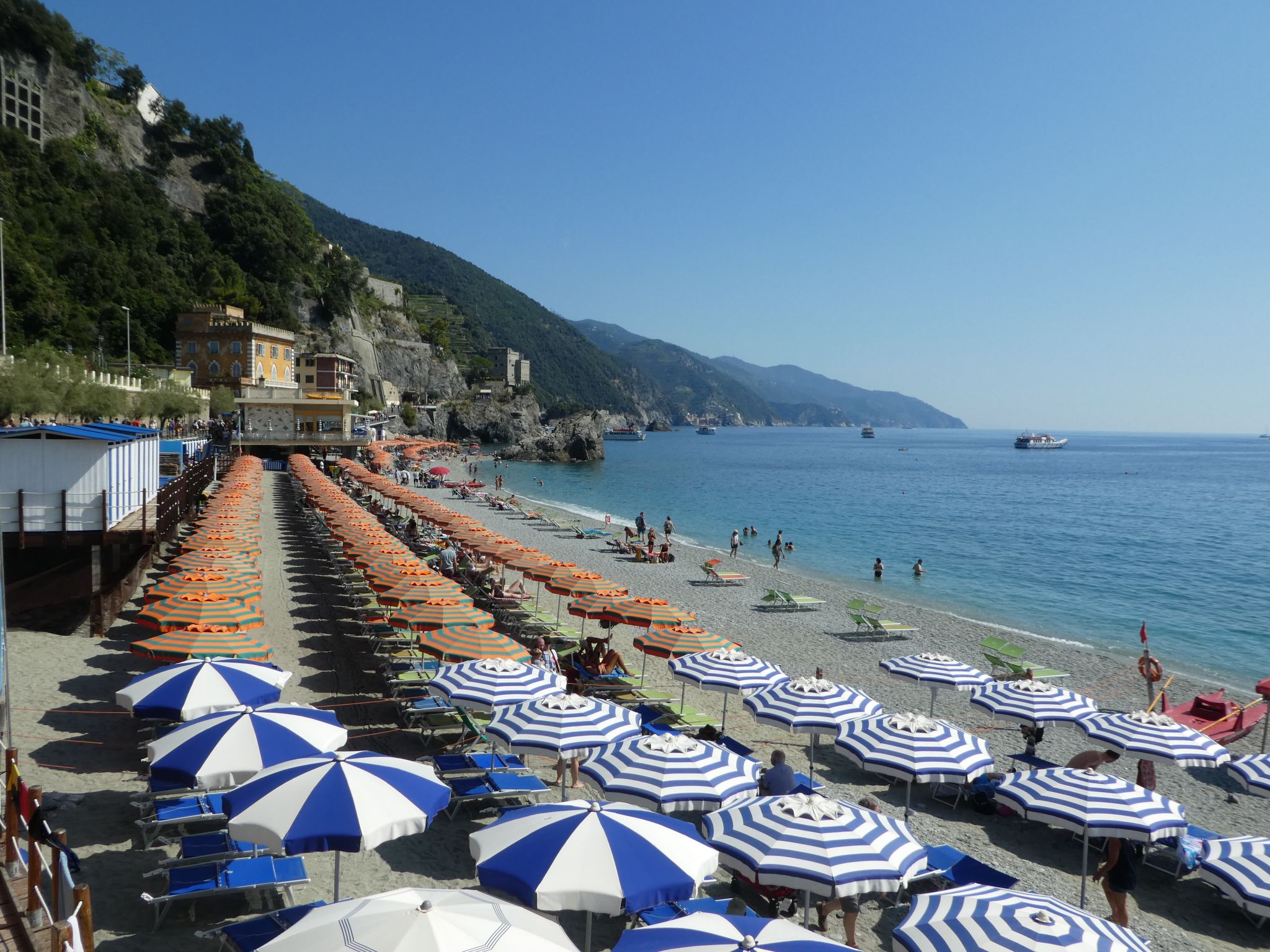 We also did a walk which starts in Levanto, the next town on the train line after Monterosso.  This trail follows the cliffs to a lookout high above Monterosso, then drops down into the town.  It’s the only viewpoint from which you can see all five villages.

And we also went kayaking, starting from the beach at Monterosso.  It was hot to begin with, but there’s some secluded swimming spots tucked into the rocks, and paddling along the coast in the late afternoon watching the sunset as we returned to Monterosso beach was fabulous. 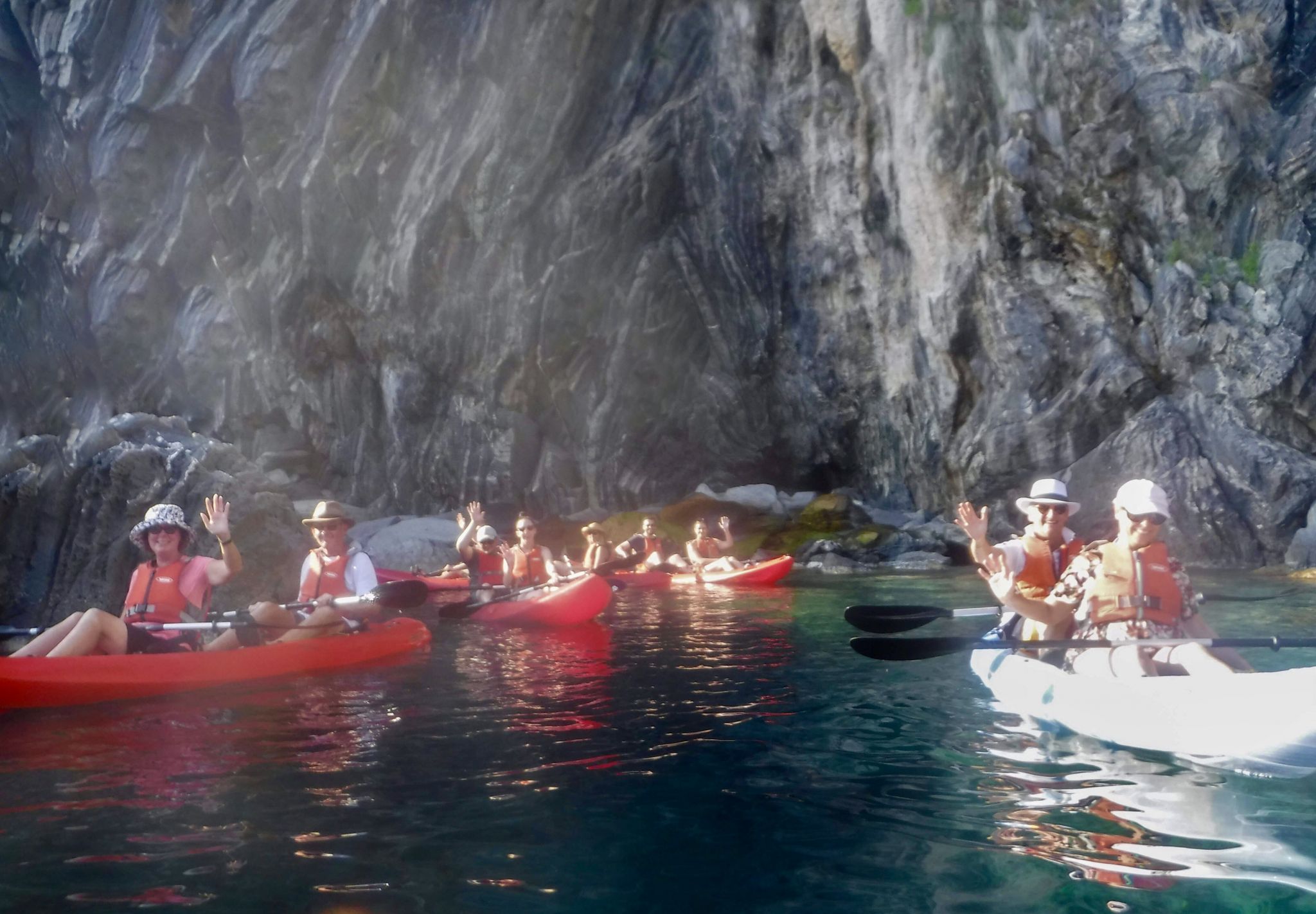