Palermo is Sicily encapsulated.  Founded by the Phoenicians in 734 BCE, it’s been ruled by virtually every empire which has touched the Mediterranean – the Greeks, Normans, Arabs, Spaniards, French and of course, the Holy Roman Empire.  In the 12th century, it was Europe’s grandest capital, and thanks to all those empires, it’s a treasure house of architecture.

Nowhere is the melting pot of the city’s history more evident than in the unique and distinctive Arab-Norman architecture of churches and palaces built during the Norman Kingdom of Sicily, which blended Byzantine, Islam and Western styles.

Palazzo dei Normanni (Palace of the Normans) was the seat of the Kings of Sicily during the Norman  era.  Remarkably, it is the oldest royal residence in Europe.  After the Normans conquered Sicily in 1072, they transformed the then Arabian palace with Byzantine additions.  Three centuries later, the Spanish renovated it, so most of its appearance reflects Spanish style of the day. 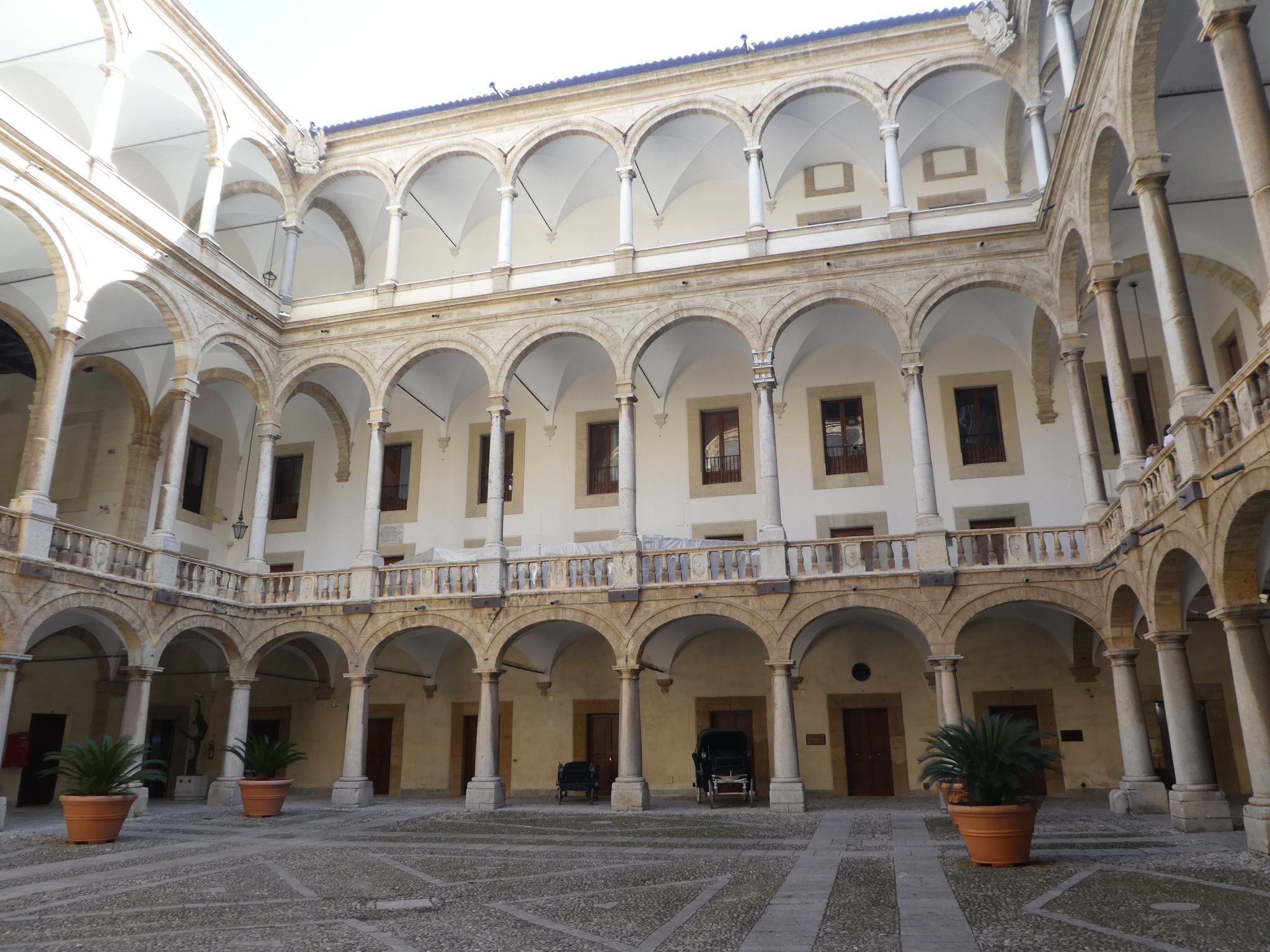 But there’s some incredible mosaics from the Norman period. 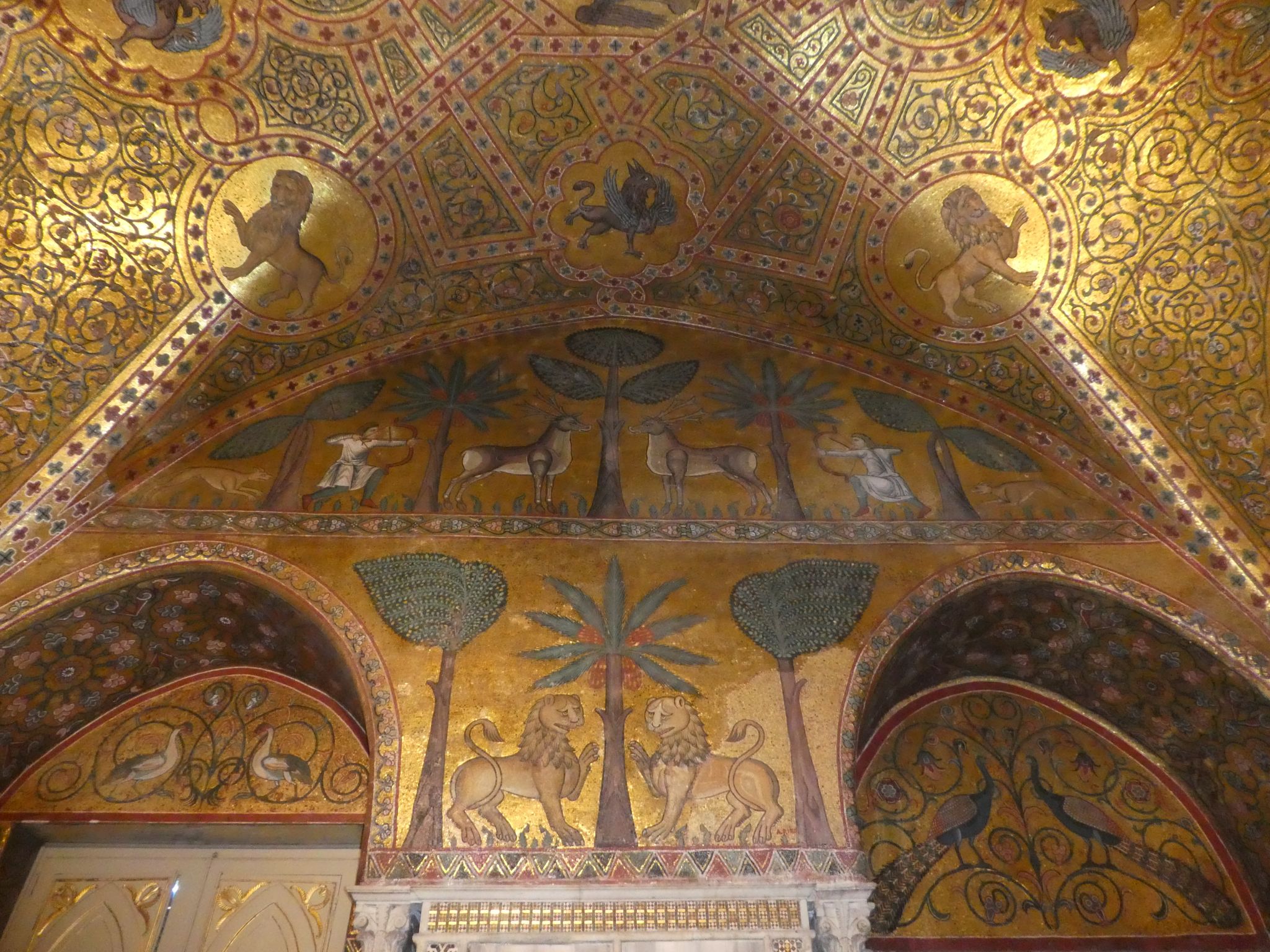 And within the palace complex is the utterly splendid Palatine Chapel.  Byzantine mosaics depicting Old and New Testament scenes literally cover every surface.  It is Sicily’s most visited place, and deservedly so. 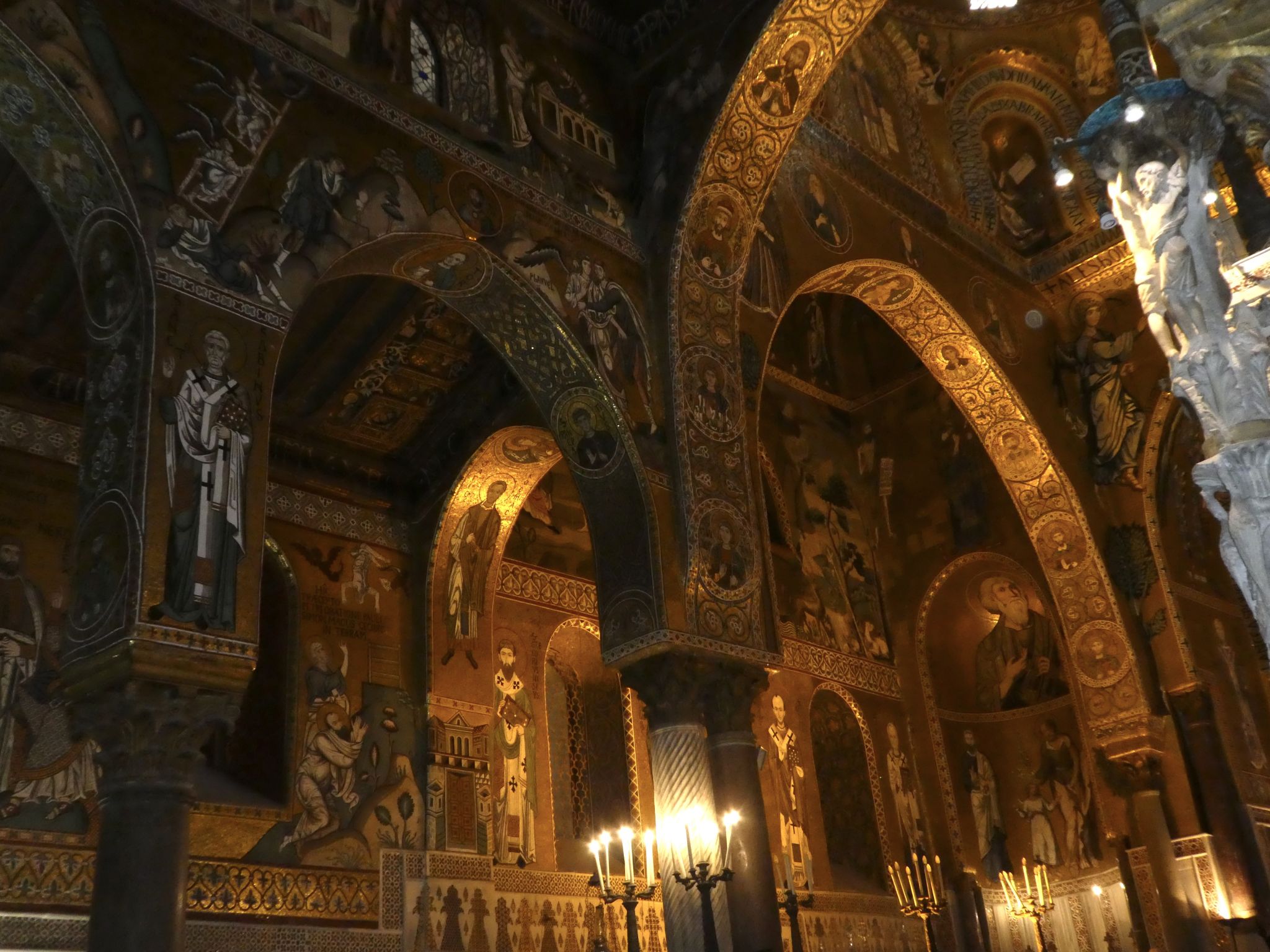 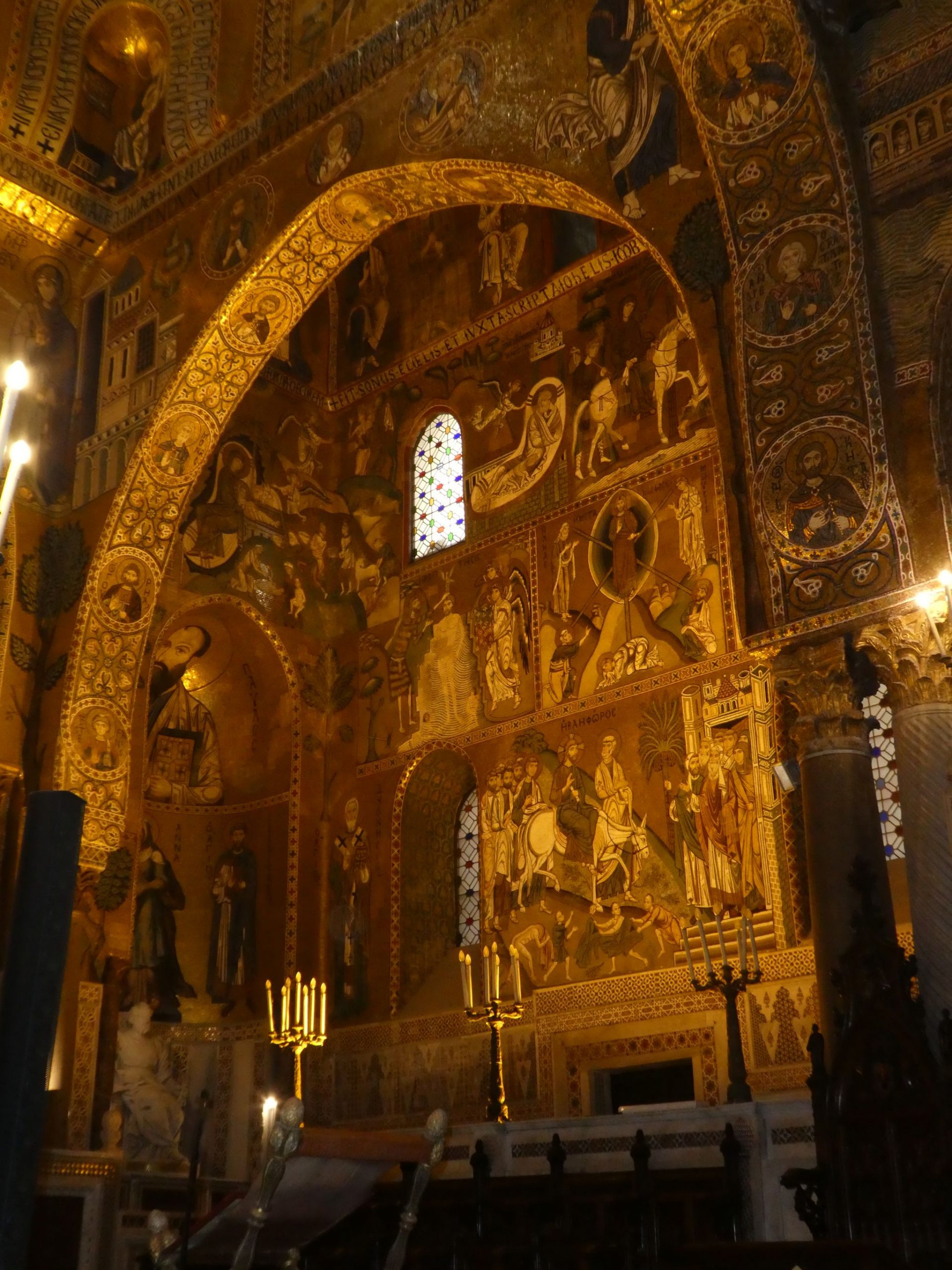 Also impressive is Palermo Cathedral, another Arab-Norman architectural mix of geometric patterns, blind arches, domed cupolas and crenelated patterning.  There’s even an excerpt from the Quran on a column near the entrance. 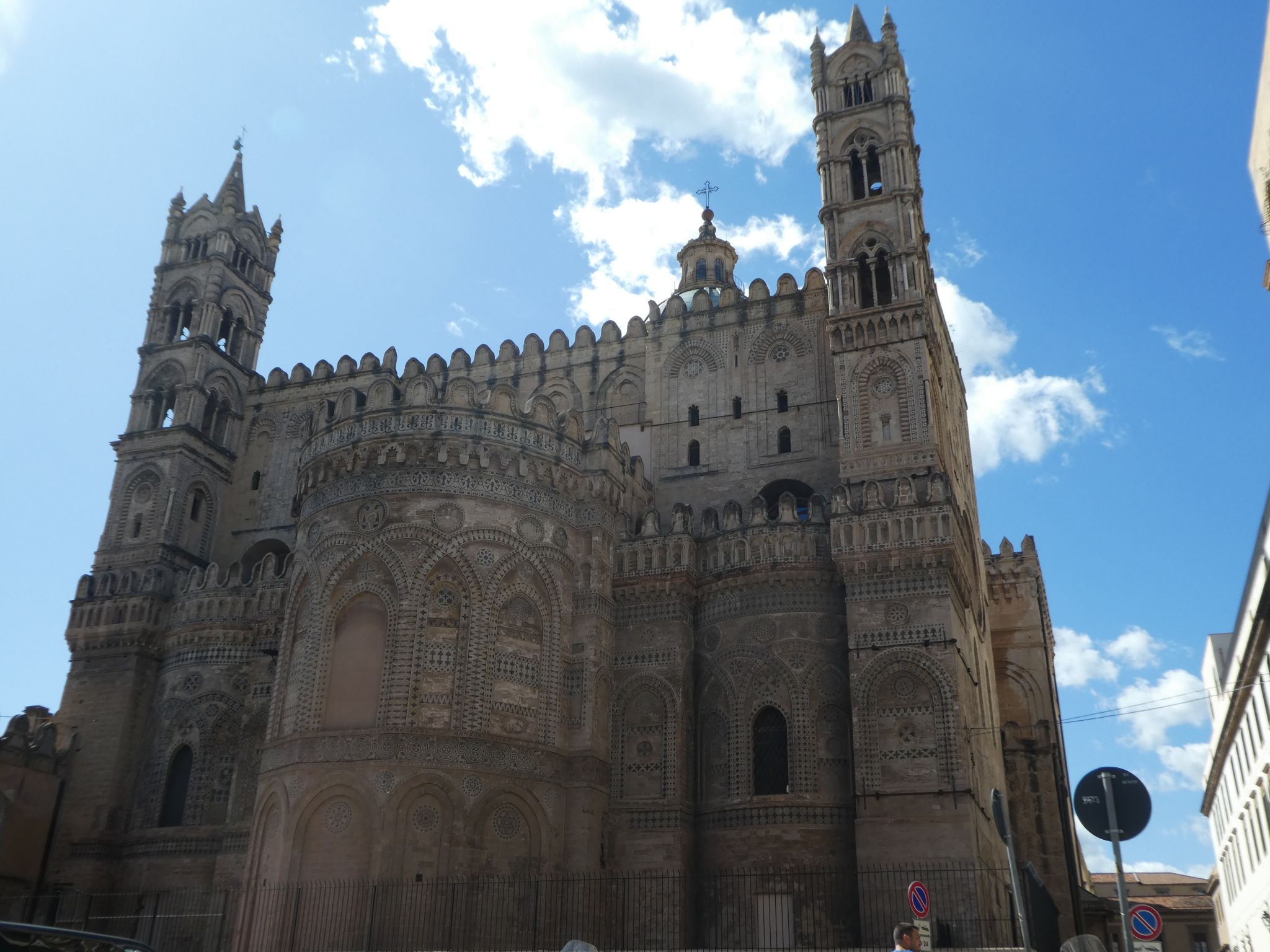 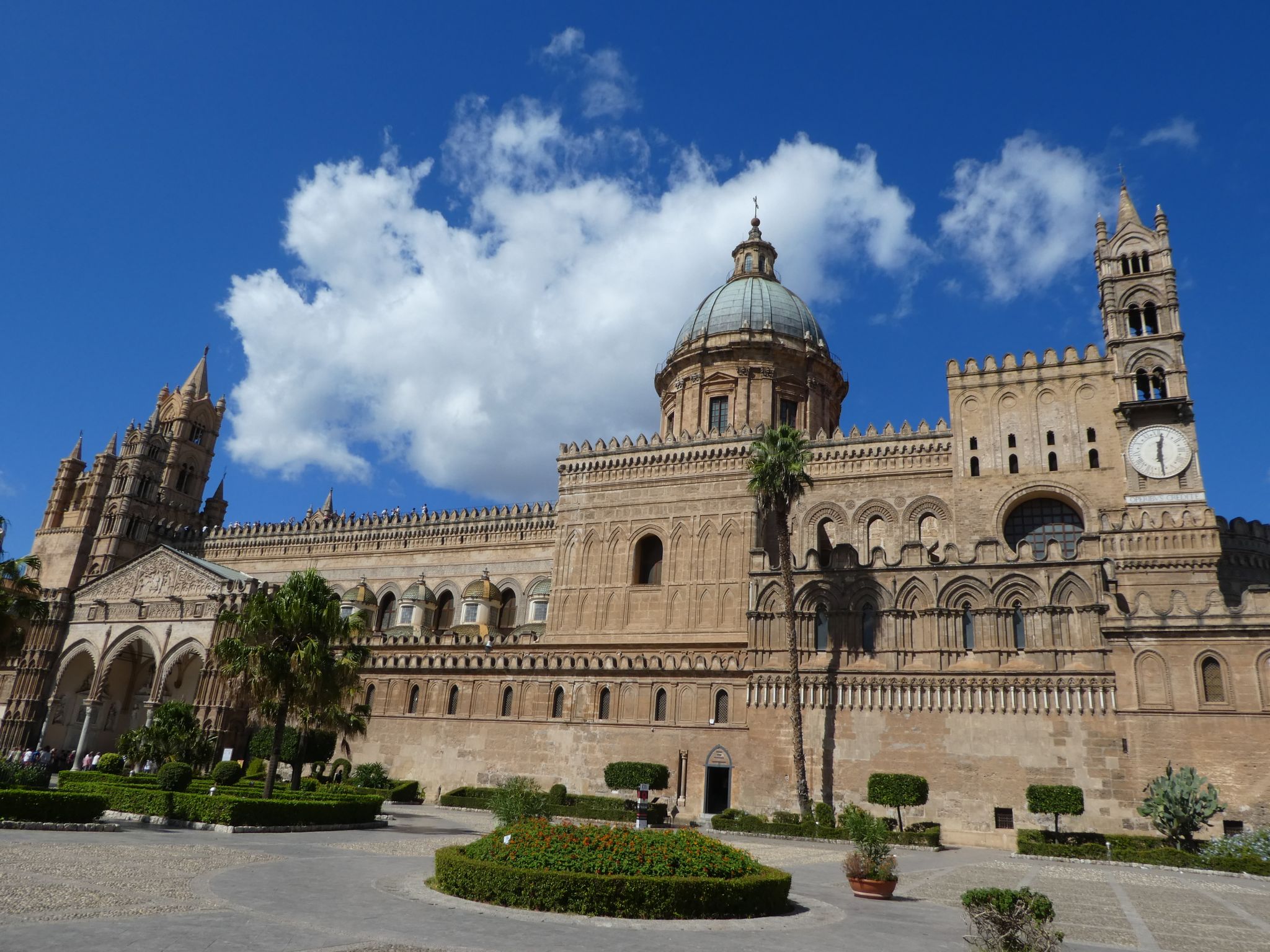 From the roof there’s a lovely view over the rooftops to the mountains which circle the city. 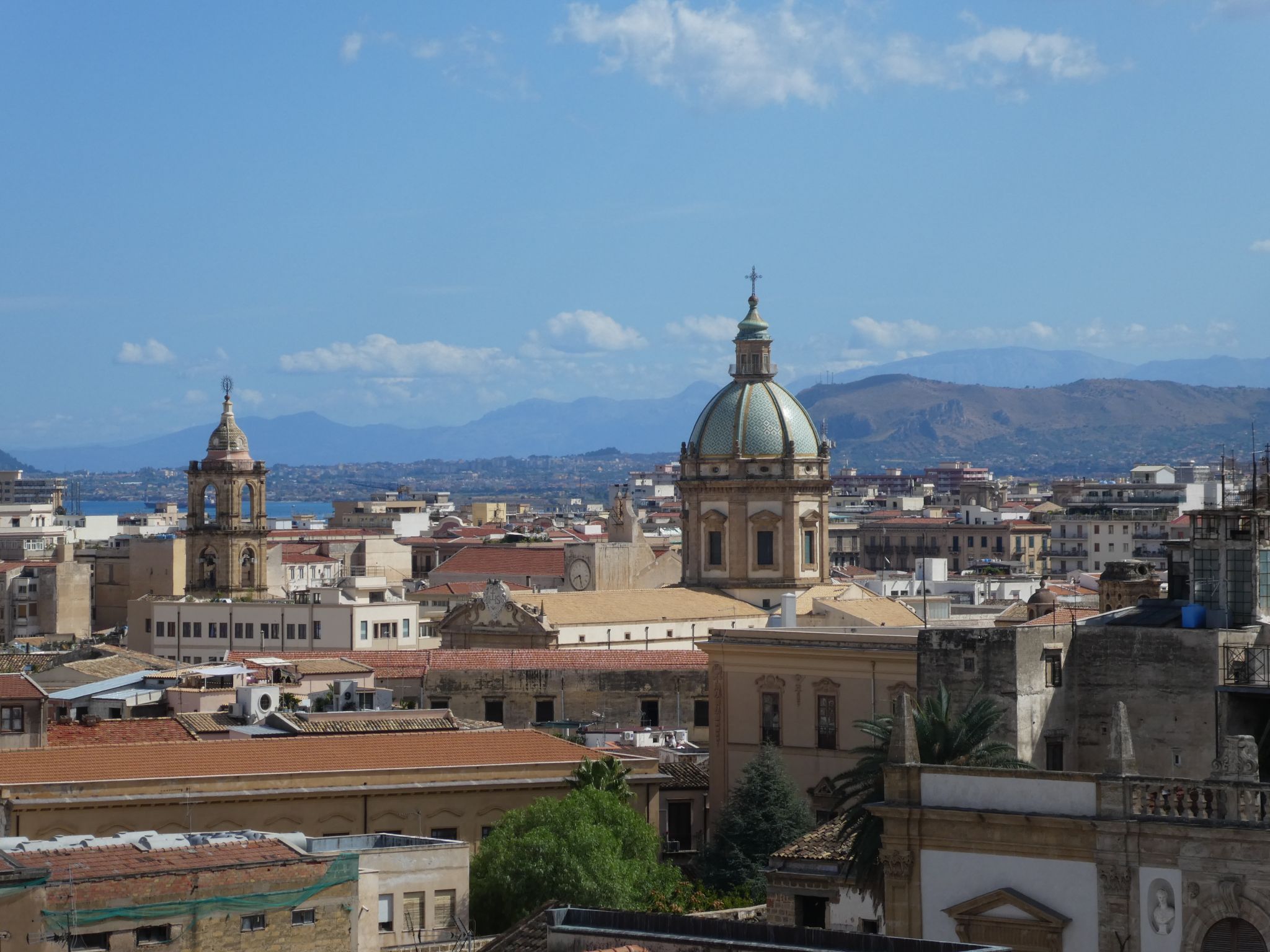 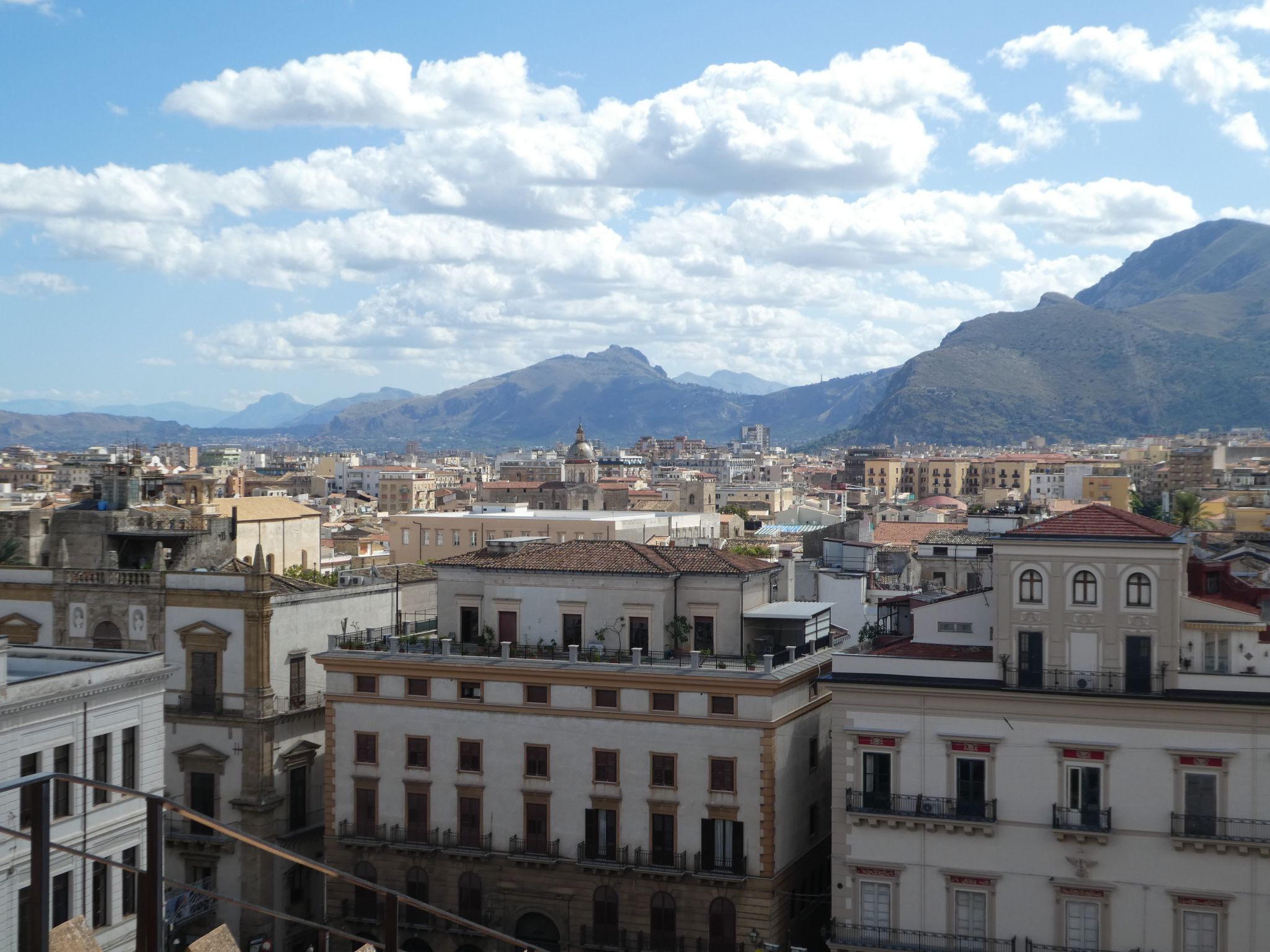 There are Norman royal tombs in a side chapel, crypt full of stone sarcophaguses, and a museum with ecclesiastical treasures, including Constance of Aragon’s jewelled crown from the 13th century and some great reliquaries, like the arm of some long forgotten holy person. 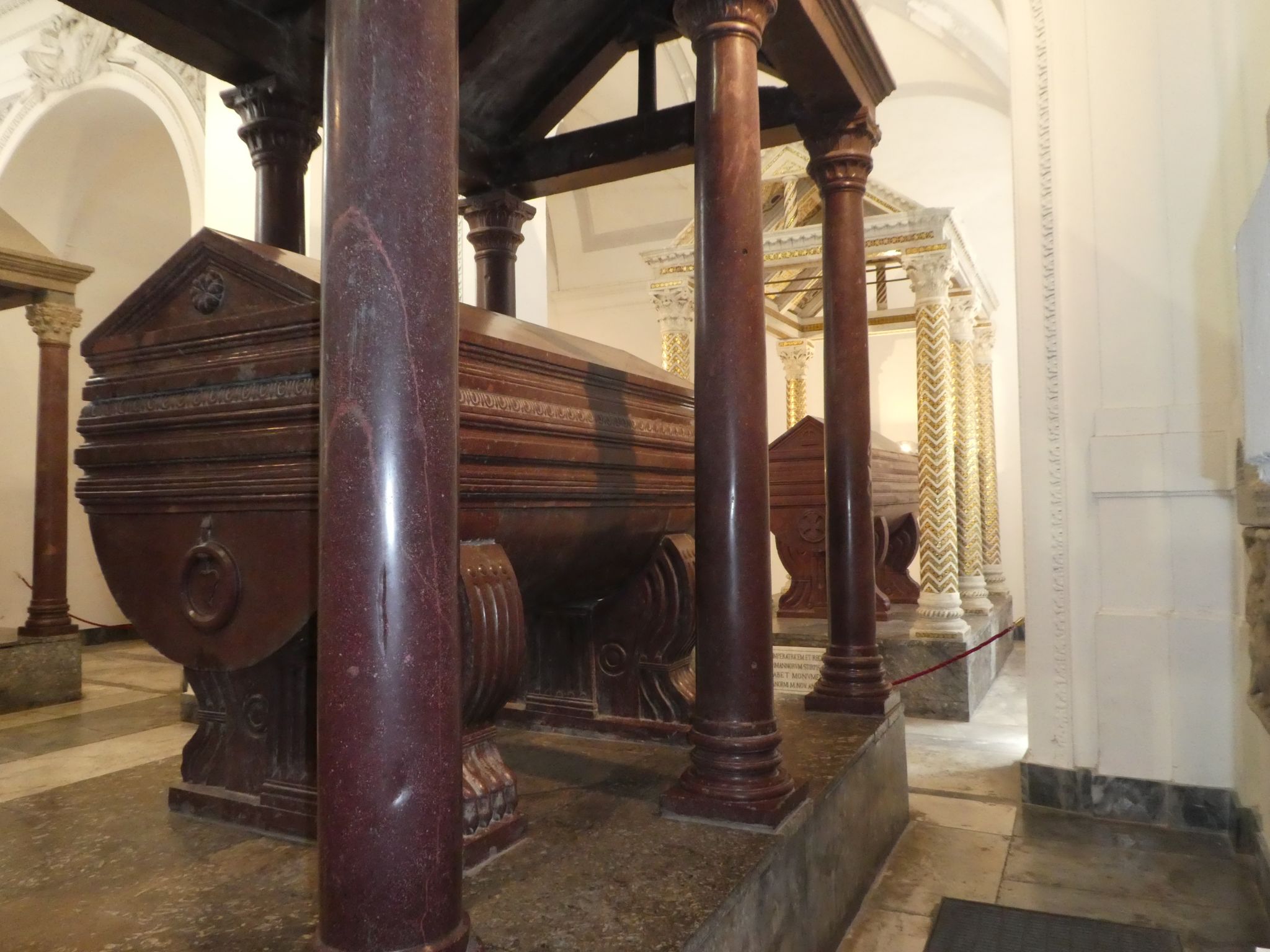 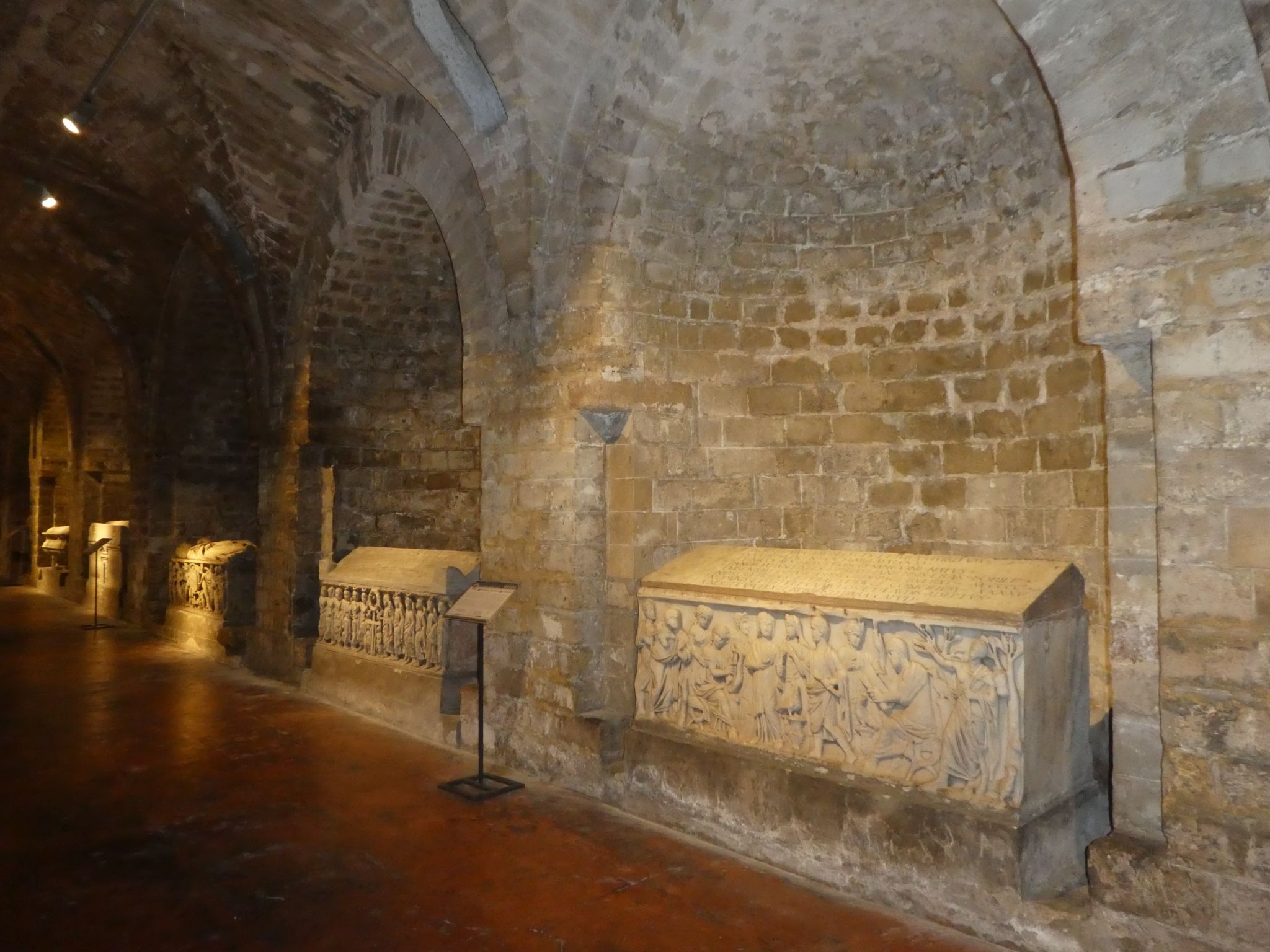 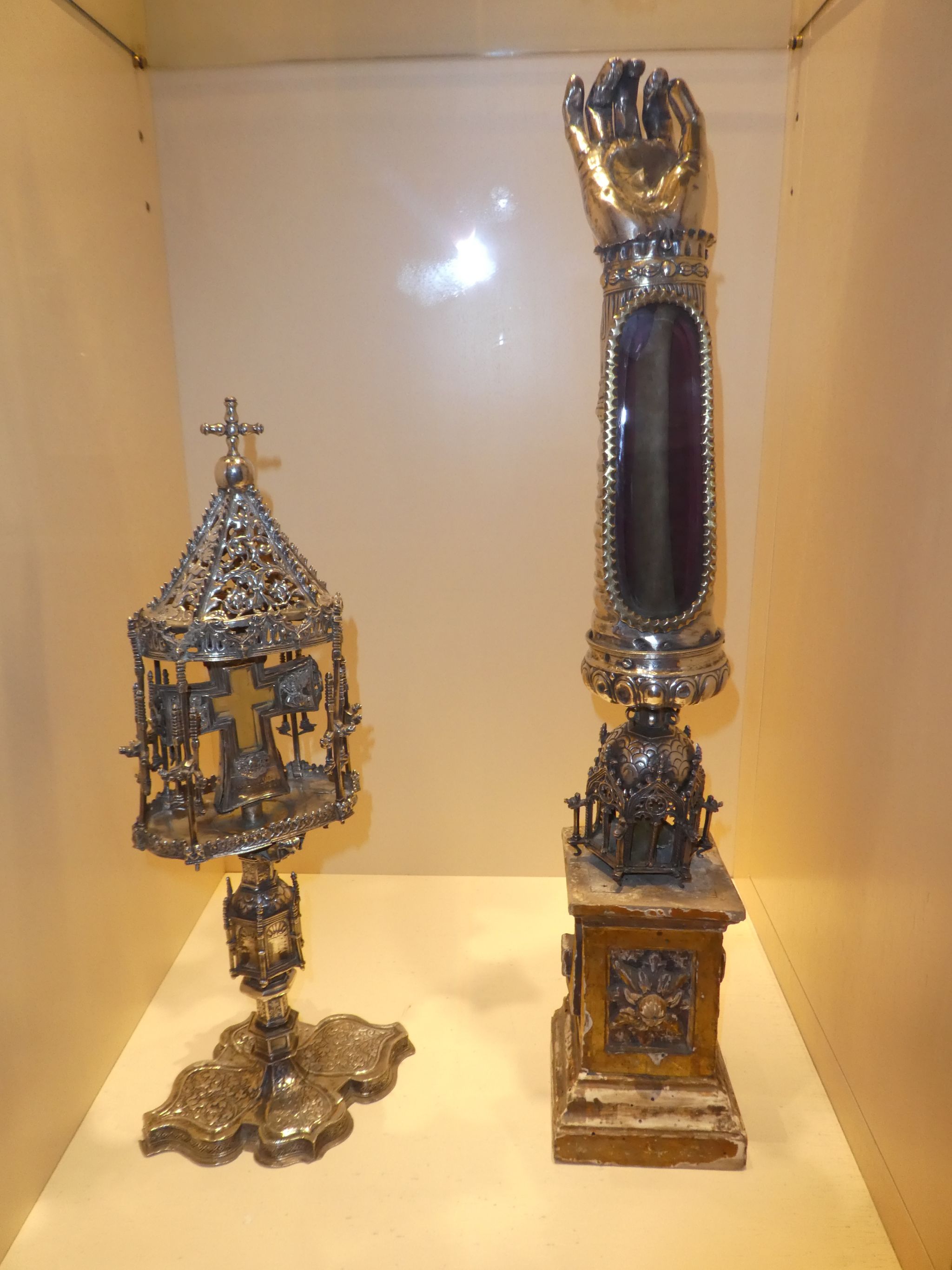 A very different example of the cross-cultural blend is the Church of San Cataldo, an Arabic-style Norman church built in 1154 which looks for all the world like a mosque. 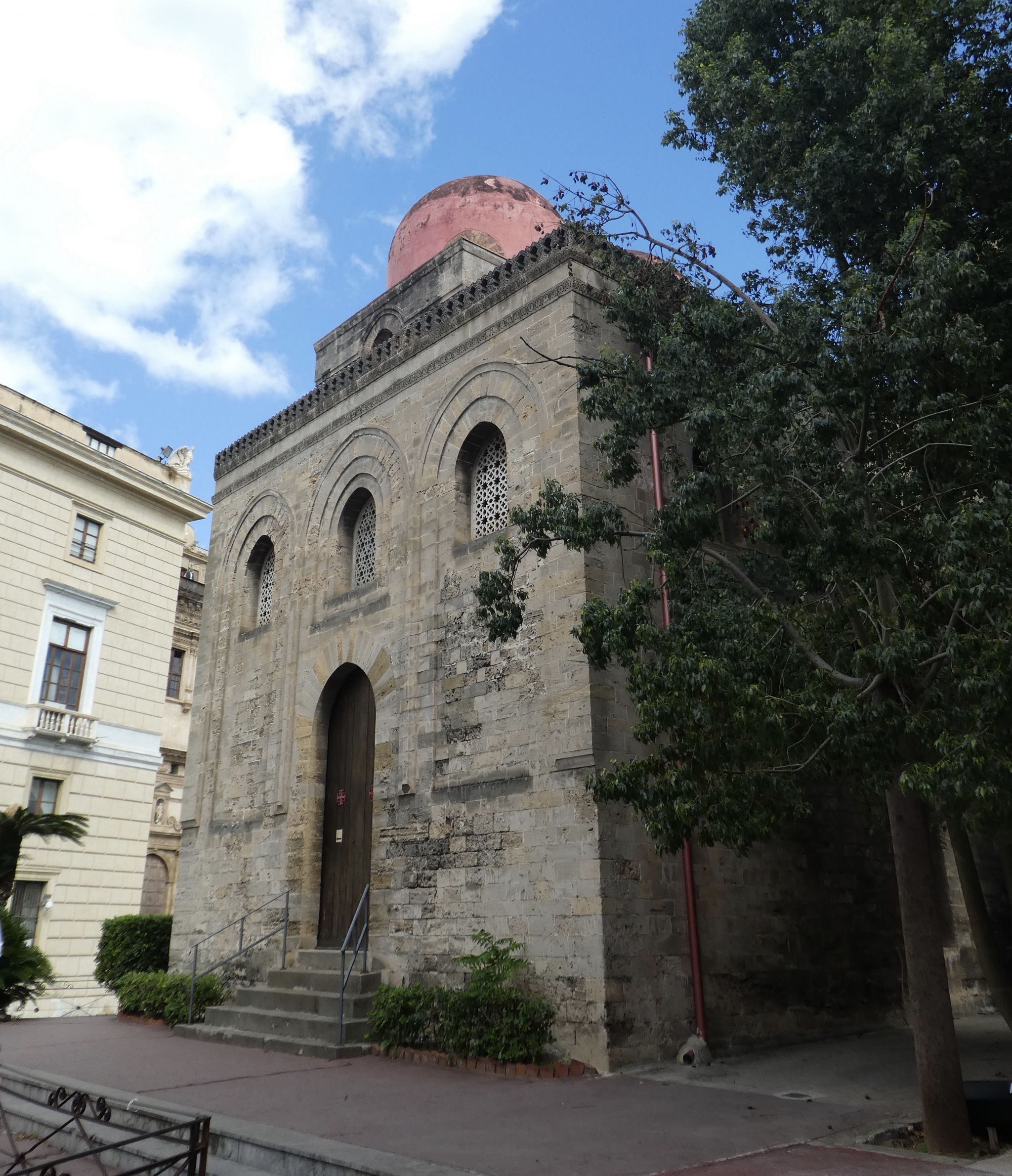 There’s no shortage of traditional Western style churches either.  There seem to be more churches per square metre than just about anywhere we’ve been. 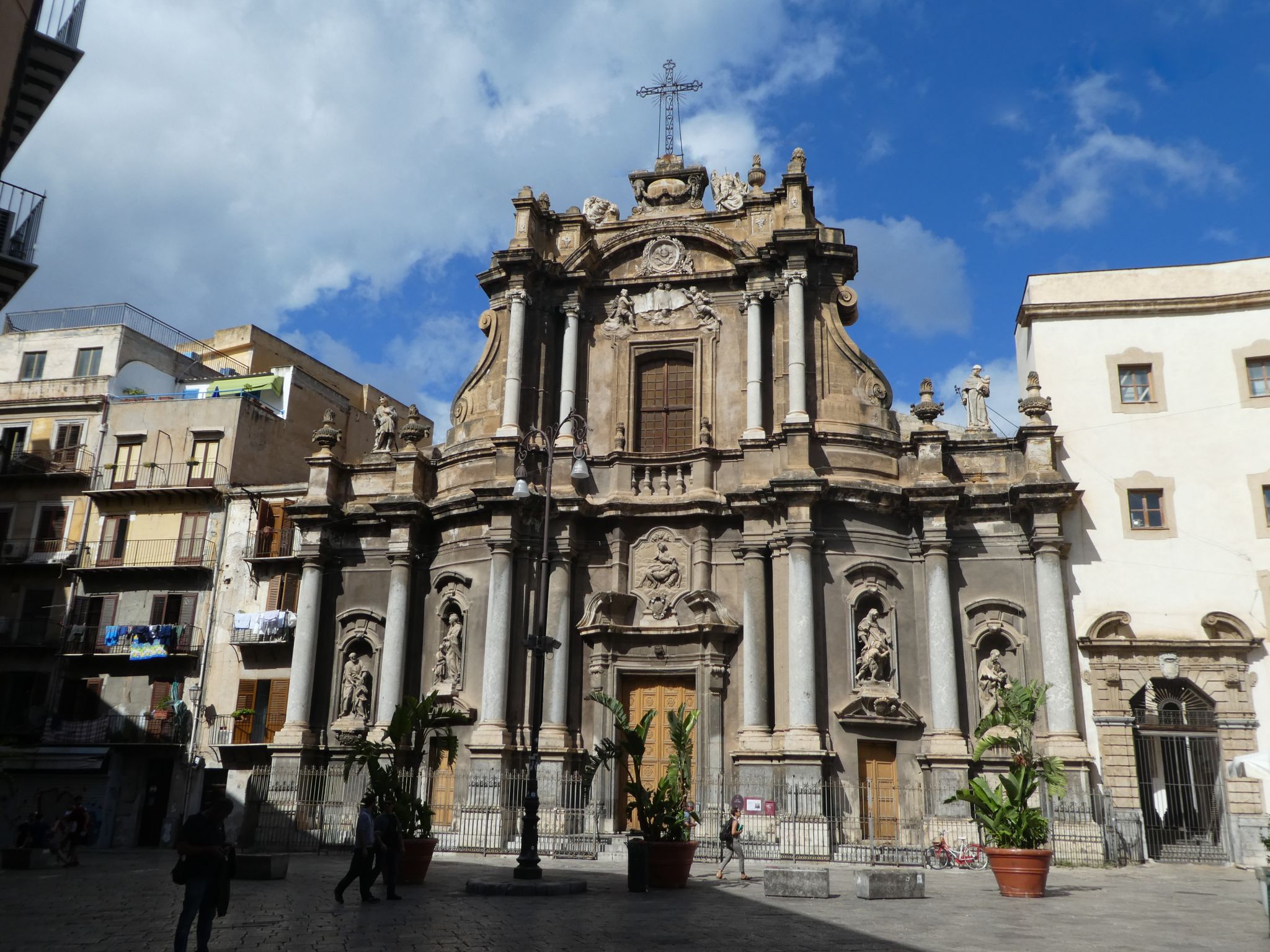 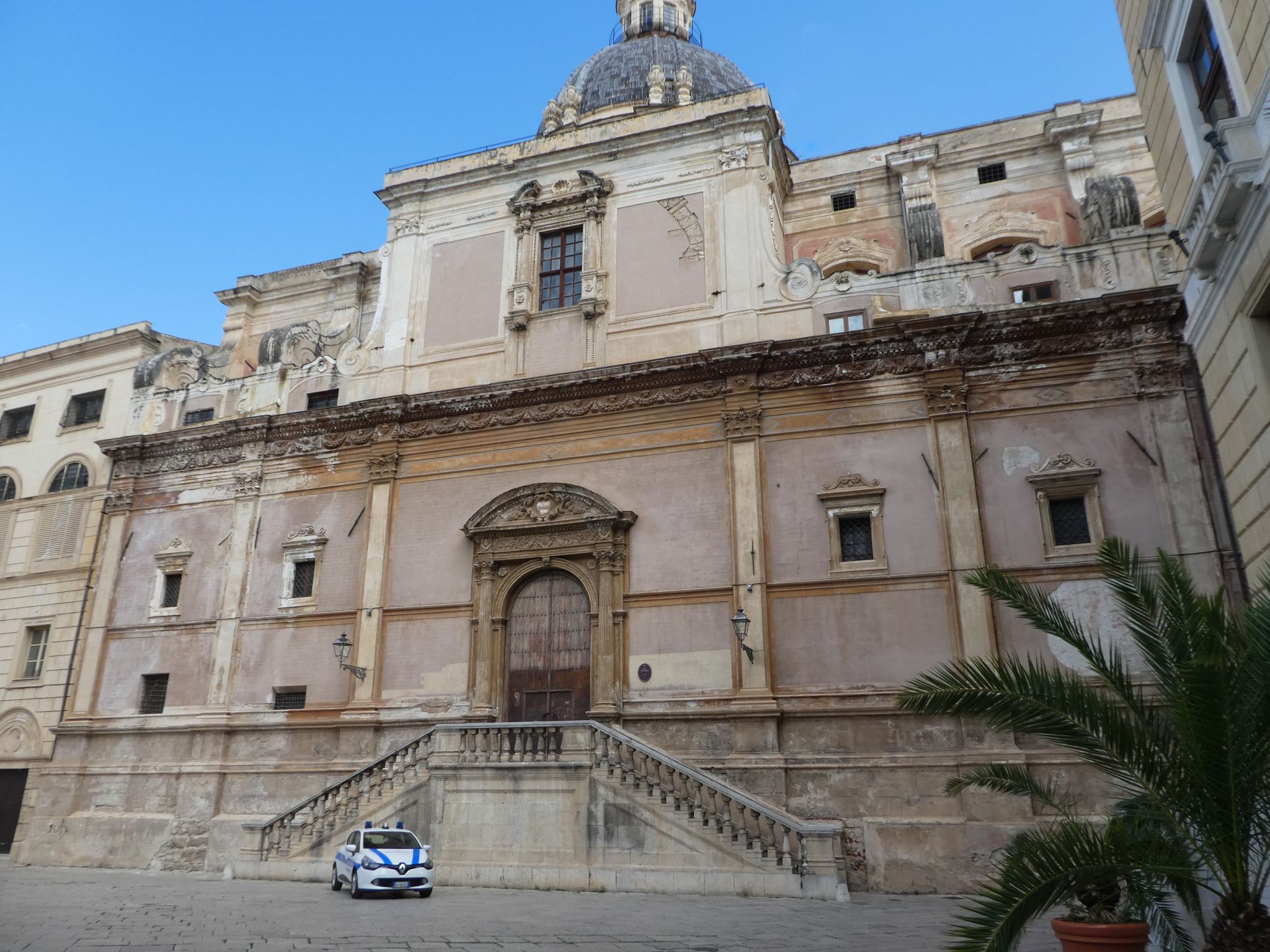 Fans of the Godfather movies may recognise Teatro Massimo, Palermo’s magnificent neoclassical opera house.  It is one of the symbols of the city, and the closing scene of The Godfather III was filmed on the steps here. 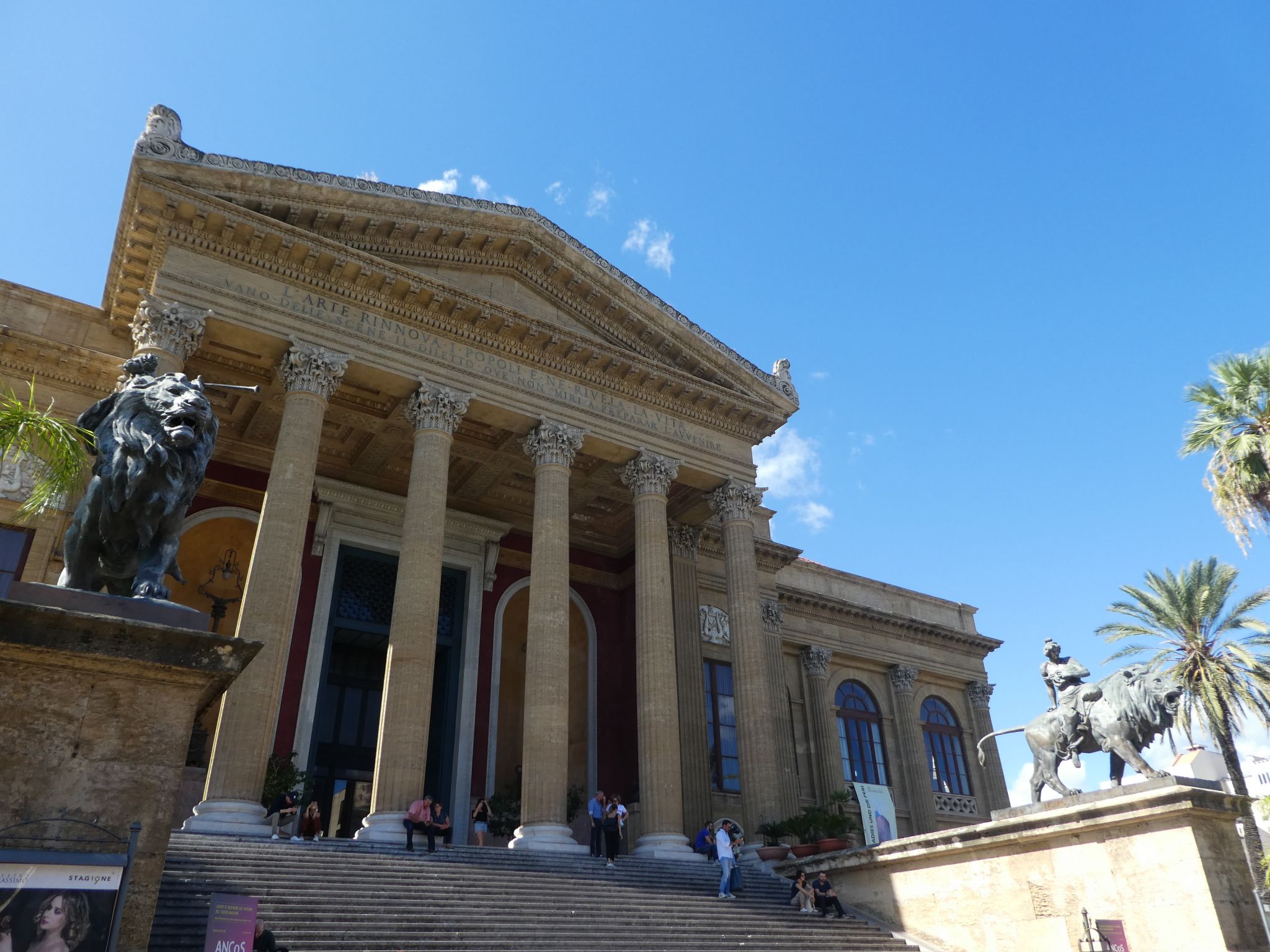 In the glory days of Sicily’s power, the streets were lined with the palazzos of wealthy families.  Most fell into disrepair as the city’s fortunes faded.  If your vision of Palermo is narrow streets of ageing apartments with washing hung from every balcony, there’s plenty of that to be seen.  But in recent years, many of the old buildings have been cleaned up.  The meticulously restored and the gently decaying sit side by side. 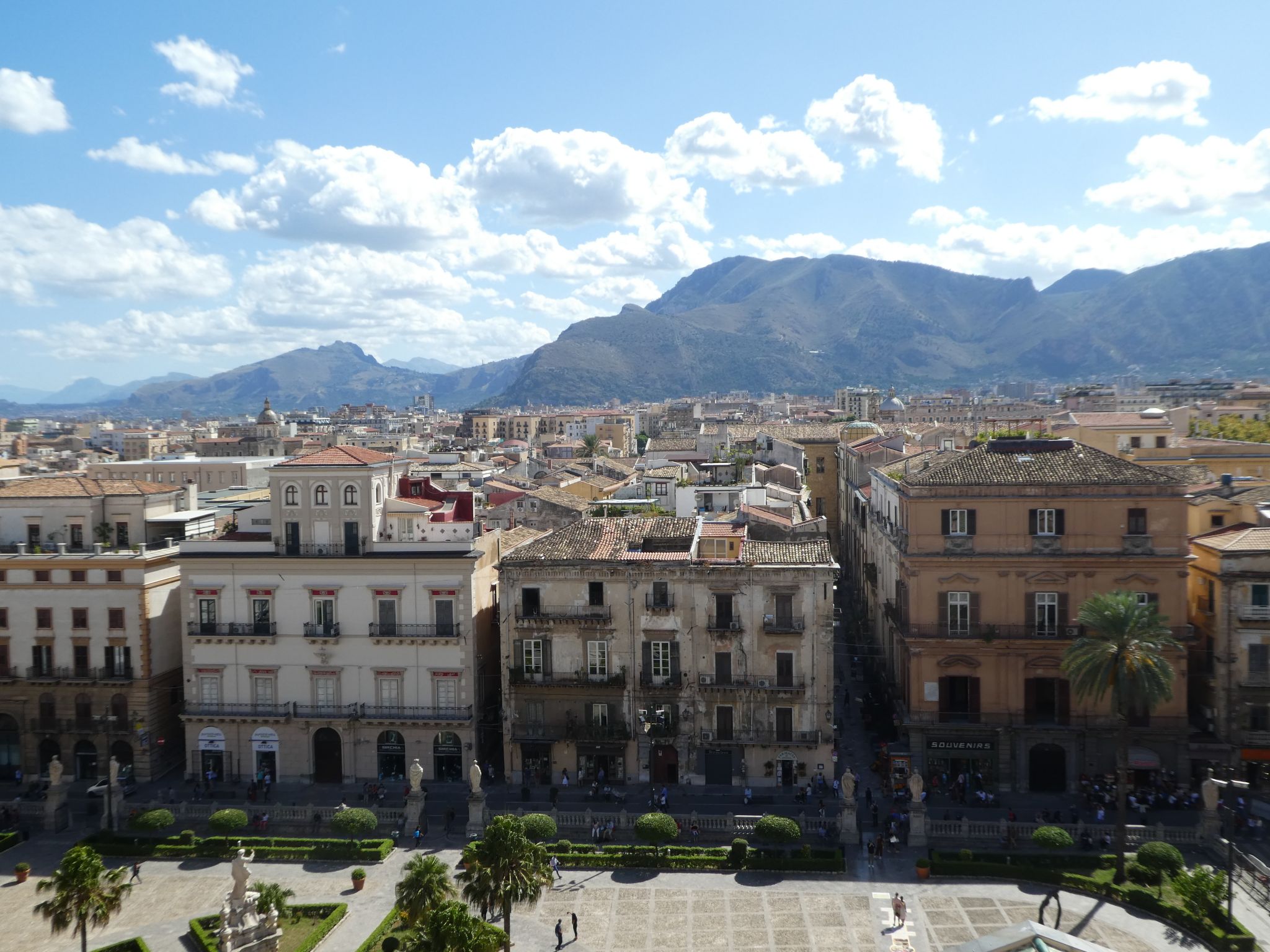 From the tangle of the backstreets, sooner or later every visitor will find themselves at Quattro Canti.  Officially known as Piazza Vigliena, this Baroque square (well, actually an octagon) was built between 1608 and 1620 at the intersection of Palermo’s two principal streets.  At the time, it was one of the first examples of major town planning in Europe.

The buildings on the four corners between the streets are almost identical, but each has different statues in niches in their facades representing one of the four seasons, one of the four Spanish kings of Sicily and one of the four female patron saints of Palermo. 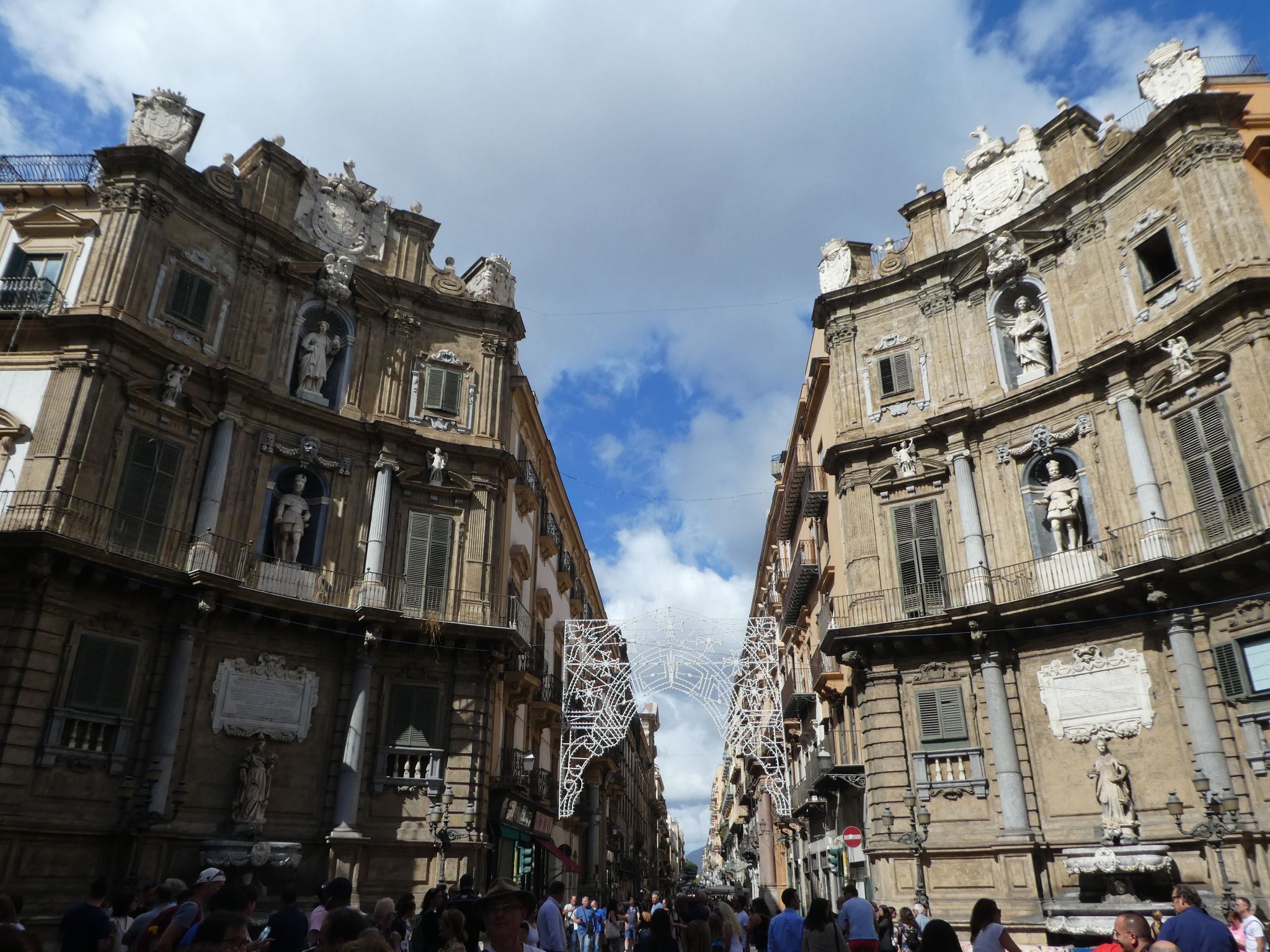 Just off the intersection is the Pretoria Fountain.  Made in Florence, it was purchased by the city in 1573, brought to Palermo in 644 pieces and erected in Piazza Pretoria – right in front of one of the city’s major churches.

Conservative Palermitans were not impressed, branding it the Fountain of Shame on account of the flagrant nudity on display.  We thought the mythical beasts around the base of the fountain were far more interesting. 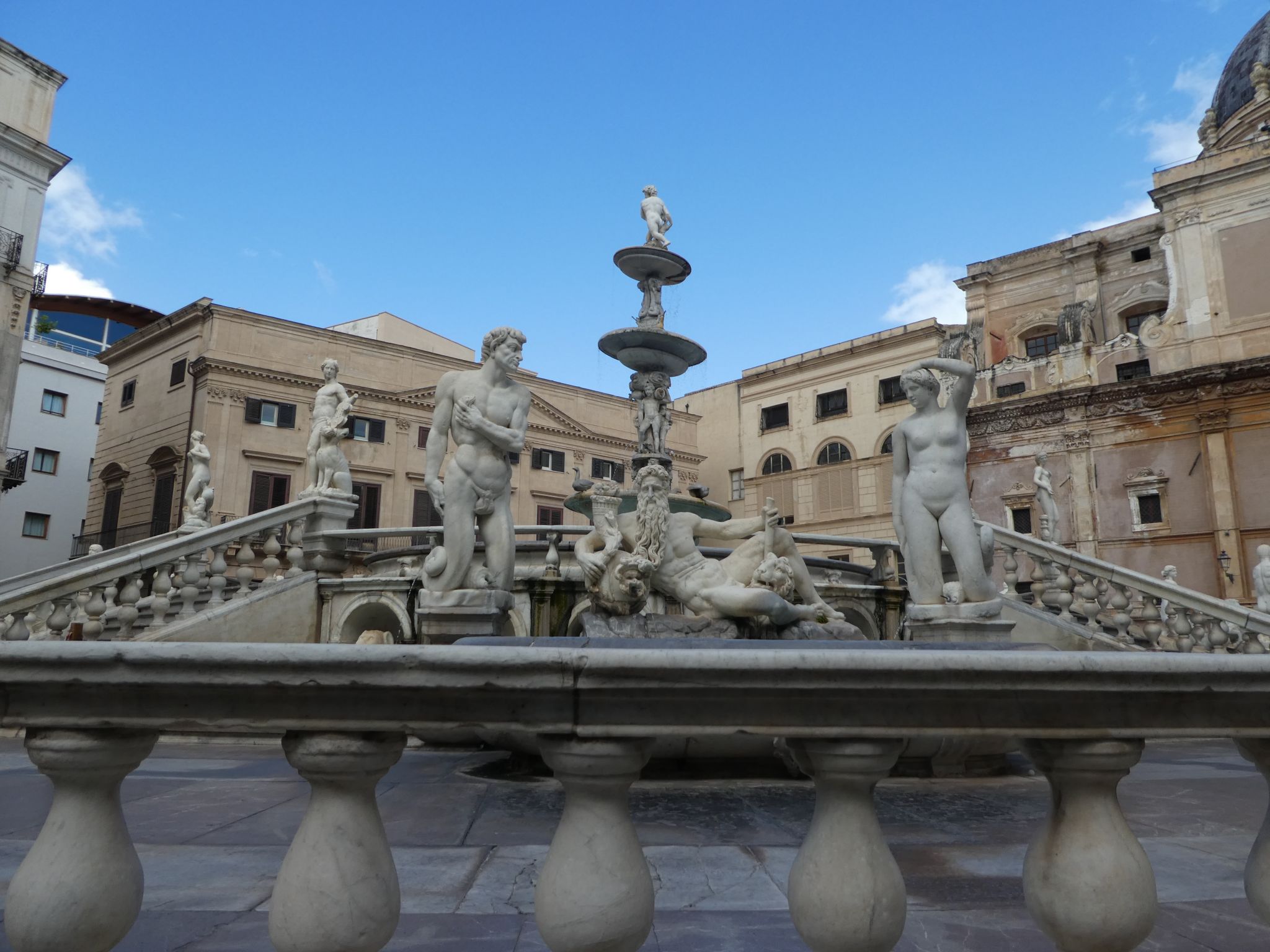 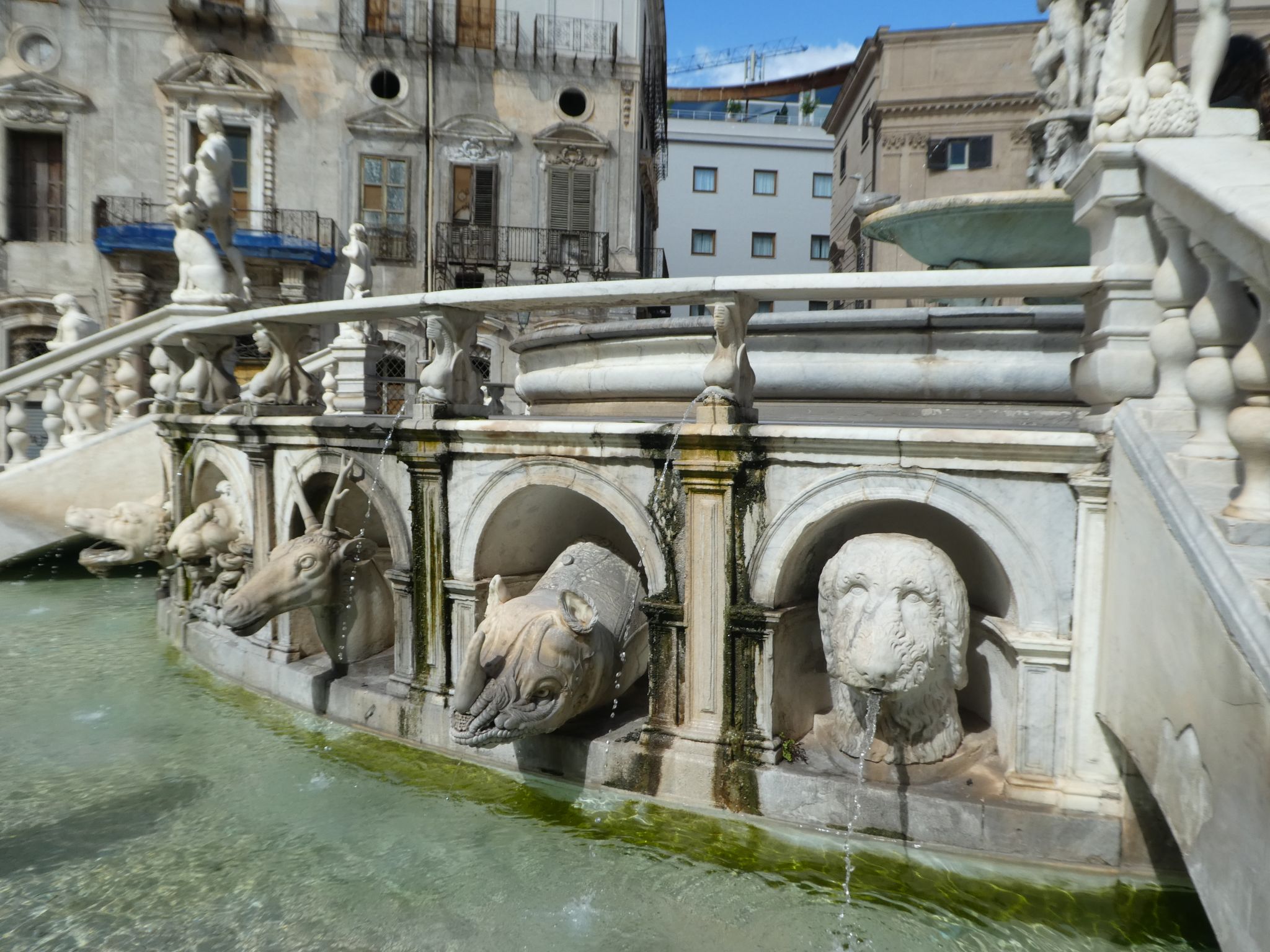 We have visited a number of catacombs and ossuaries on our travels but nothing, and we mean nothing, as bizarre as the Catacombe of the Cappuchins.  Photographs are not permitted and there is CCTV everywhere in case visitors are tempted to try and take a sneaky photo.  So instead we had to buy a postcard set.  The images aren’t great, but will give you an idea of how weird this place is.

When the cemetery at the Cappuchin monastery reached full capacity in the 16th century, the monks began to excavate crypts underneath it.  In 1599, they mummified Father Silvestro Da Gubbio and placed him in the catacomb. 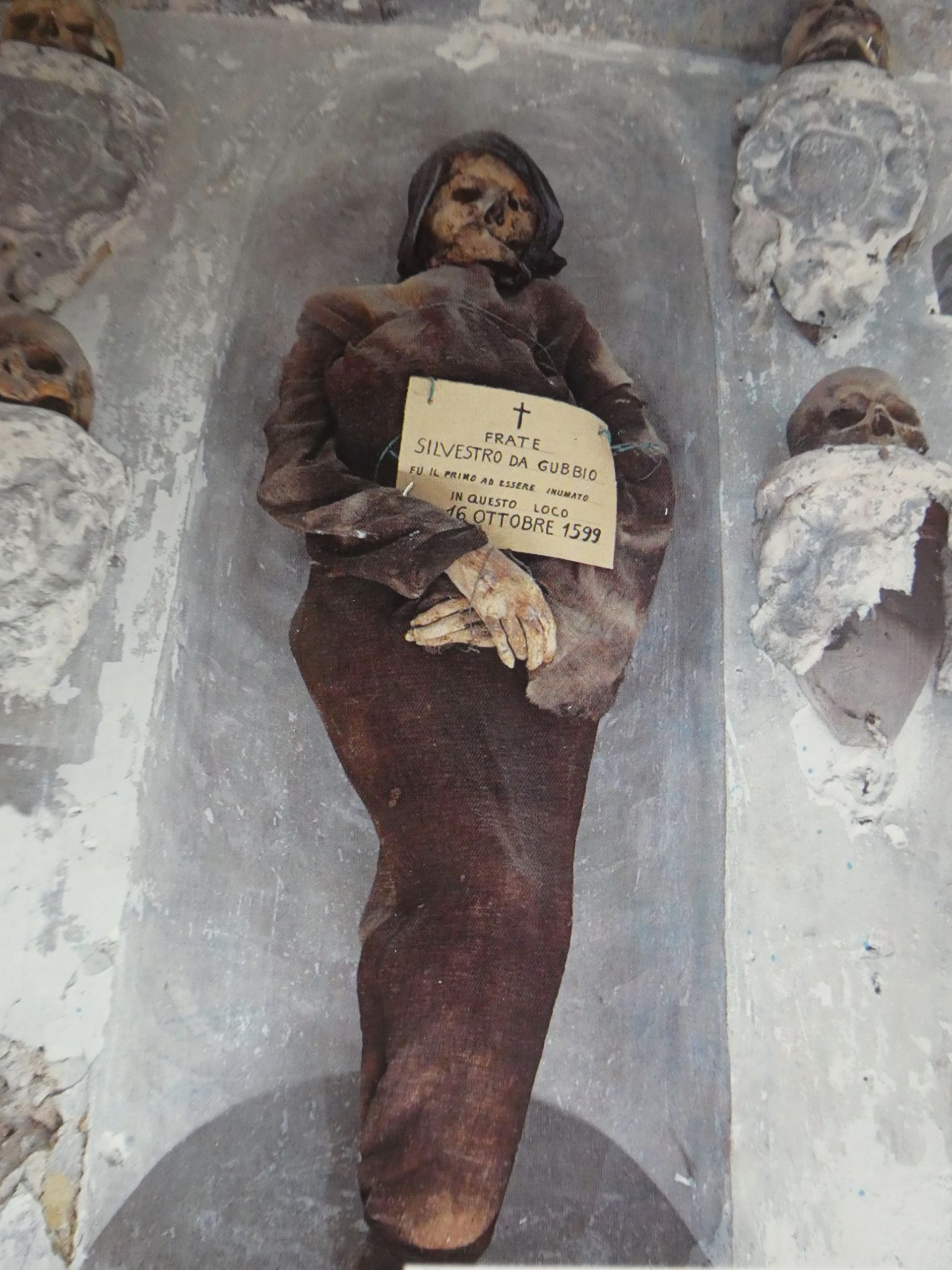 He was the first of many.  The basic technique was to dehydrate the bodies then wash them in vinegar.  Some were then embalmed, others were enclosed in sealed glass cabinets.

Although the catacomb was originally intended only for the monks, it became a status symbol for local wealthy people to be interred here.  Relatives would visit to tend to the body, sometimes even changing the clothes.  Families would come and hold hands with the corpse/mummy so the deceased could ‘join’ them in prayer.

Maintenance of the catacomb was funded by donations from the relatives of the deceased.  But when we say ‘donation’, if a family stopped paying, their loved one was put aside on an inaccessible shelf until payments began again.

The catacomb contains around 8,000 corpses and 1,252 mummies, divided into sections for men, women, children, monks, priests, professionals, and even a section for virgins. 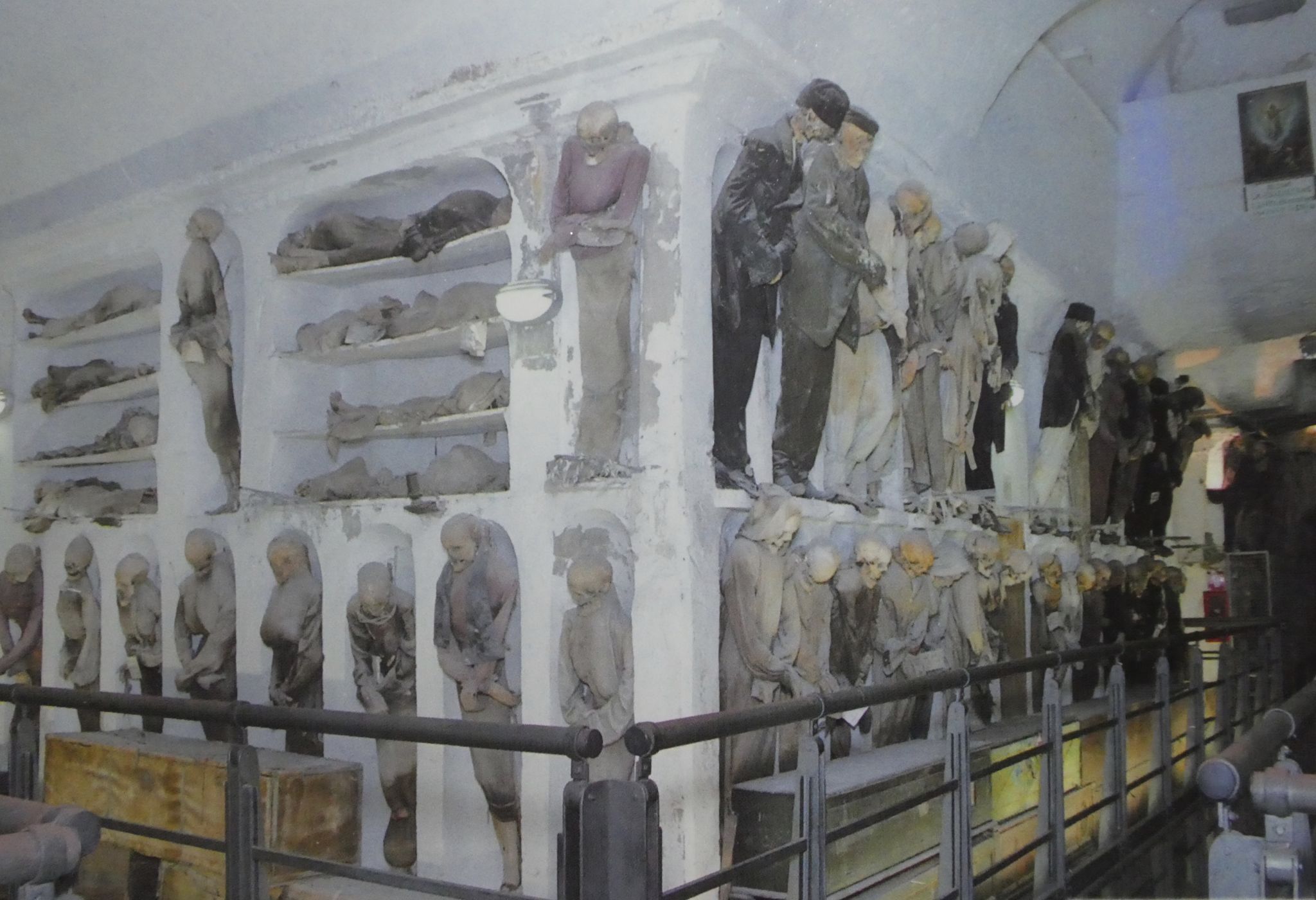 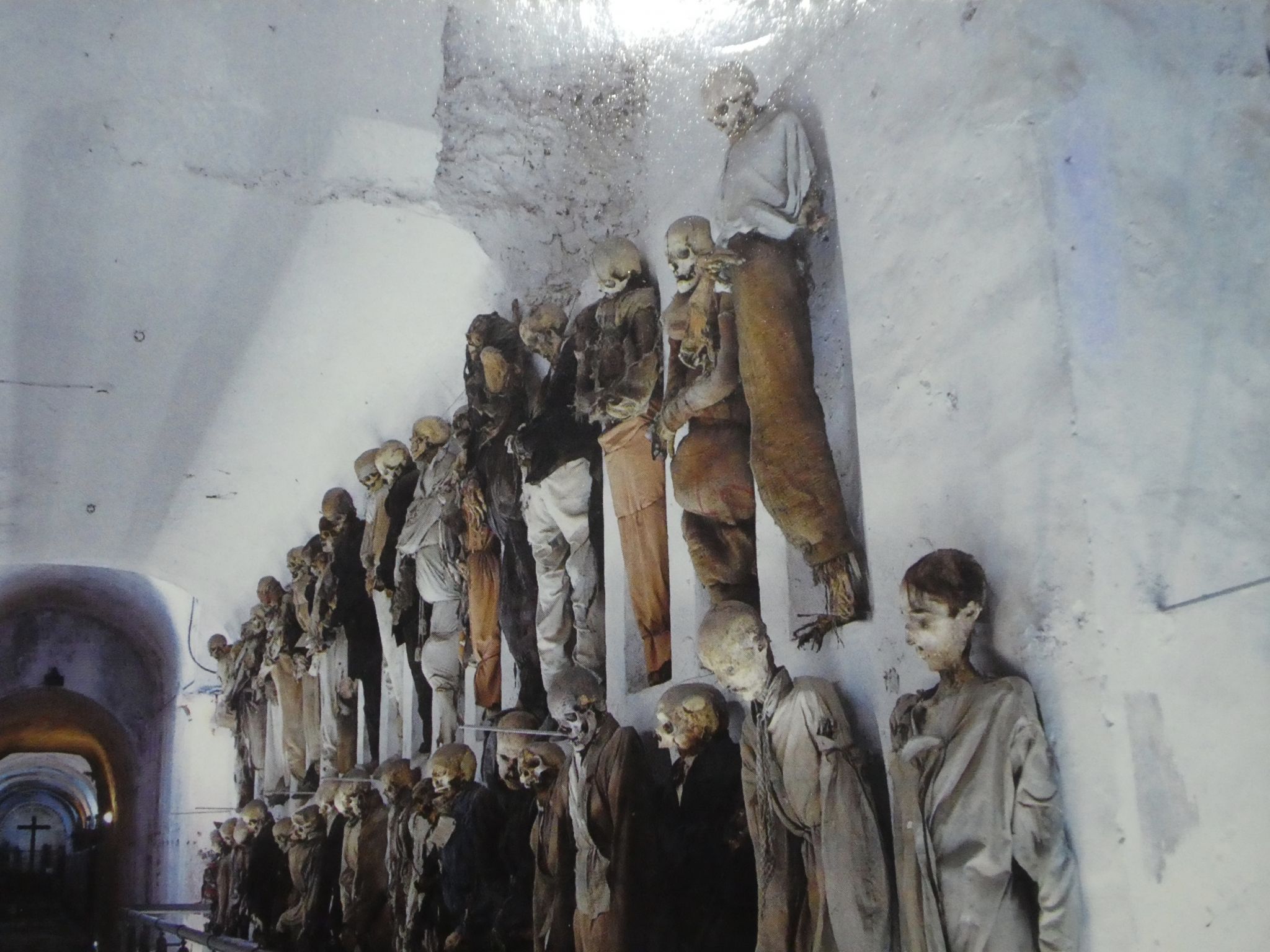 Some of them are posed – like three children playing, or this one of a couple having a conversation. 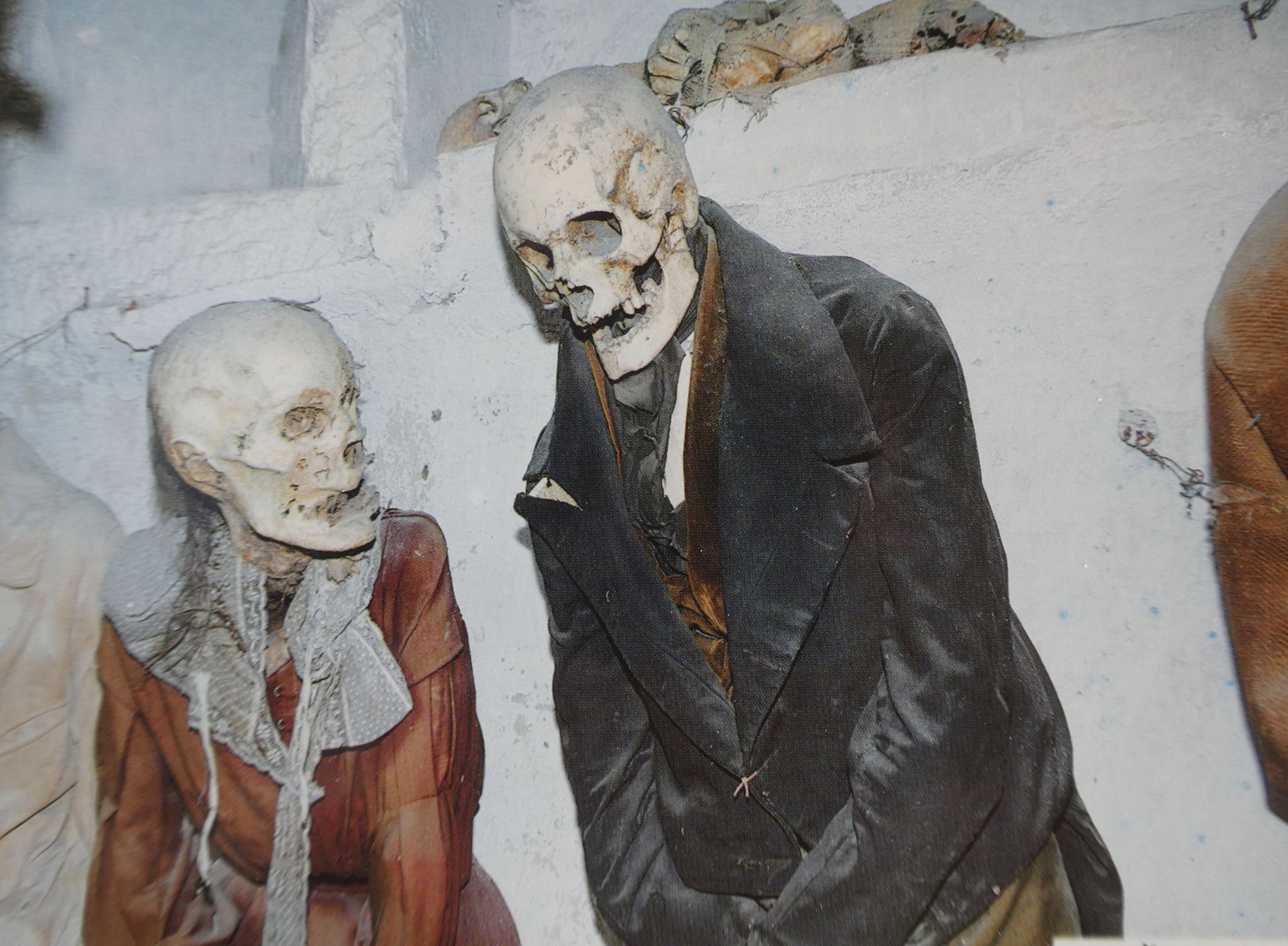 Particularly disturbing is the catacomb’s most celebrated resident, Rosalia Lombardo, who died in 1920 when not quite two years old.  She was one of the last people interred here.  Her body is amazingly well preserved, by a technique which was lost for decades but recently rediscovered (a mix of formalin, alcohol, glycerin and zinc salts in specific proportions). 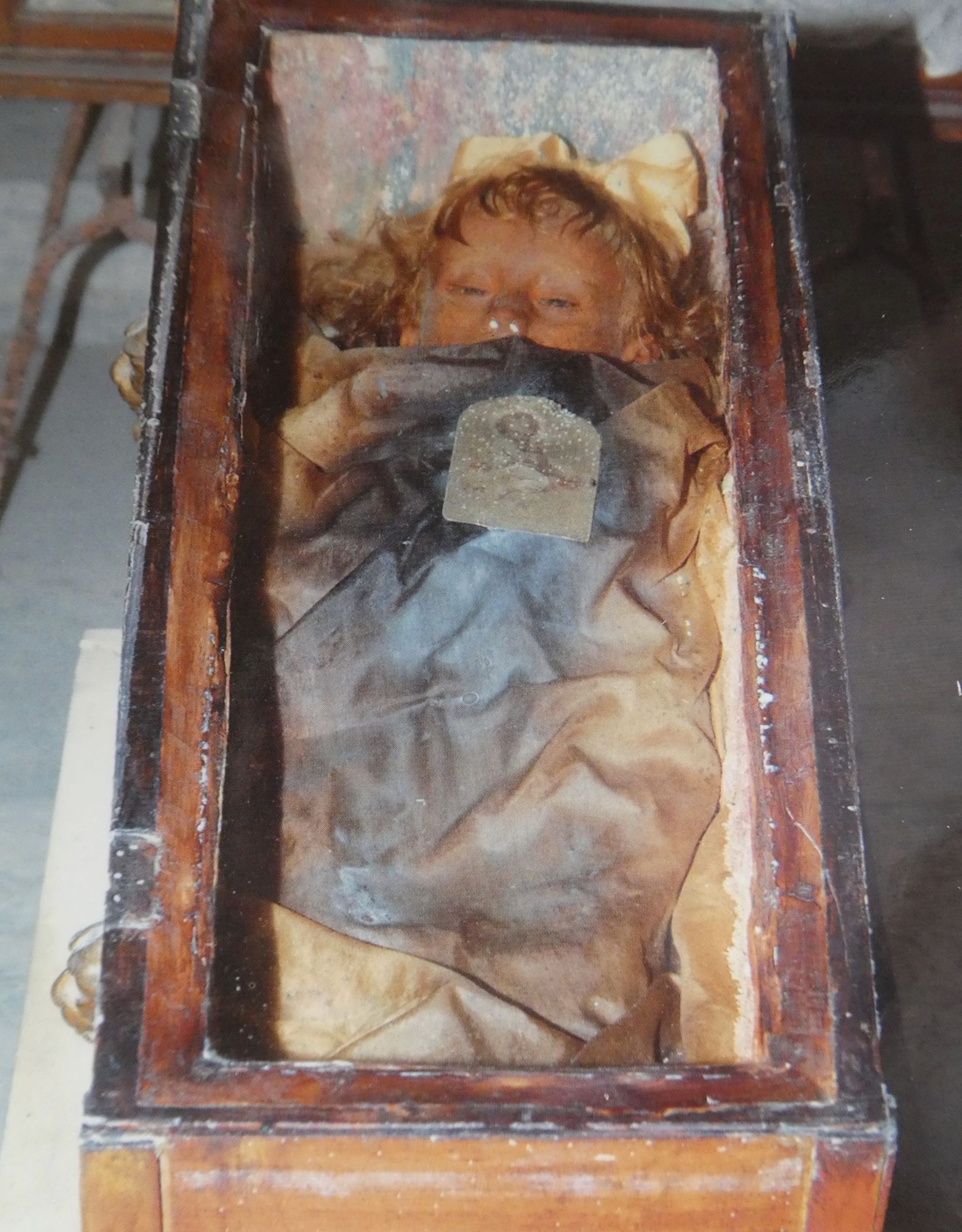 There’s something about this place – the number of mummies, the clothing, the way they are displayed – they almost look like props in a sideshow alley haunted house.

It was a weird way to finish our stint in Italy.