“I think that’s how Chicago got started. A bunch of people in New York said, ‘Gee, I’m enjoying the crime and the poverty, but it just isn’t cold enough. Let’s go west.”  Richard Jeni, comedian

From Greece we flew to Madrid for a few days.  We spent some time here in January (see earlier post).  This time we were really just passing through on our way to Valencia for the wedding of a friend.

Valencia is a lovely city and they have a place in Ruzafa, an historic neighbourhood full of interesting buildings, quirky bars and cafes.  Our three days there were filled with wedding festivities so we didn’t see much of the city.  Definitely worth a return visit.

And then we headed across the Atlantic.  First stop – Chicago.

The Windy City wasn’t.  Windy, that is.  In fact for our few days there, the skies were blue and the wind was almost non-existent.  Perfect autumn weather.  Until it turned – more on that later. 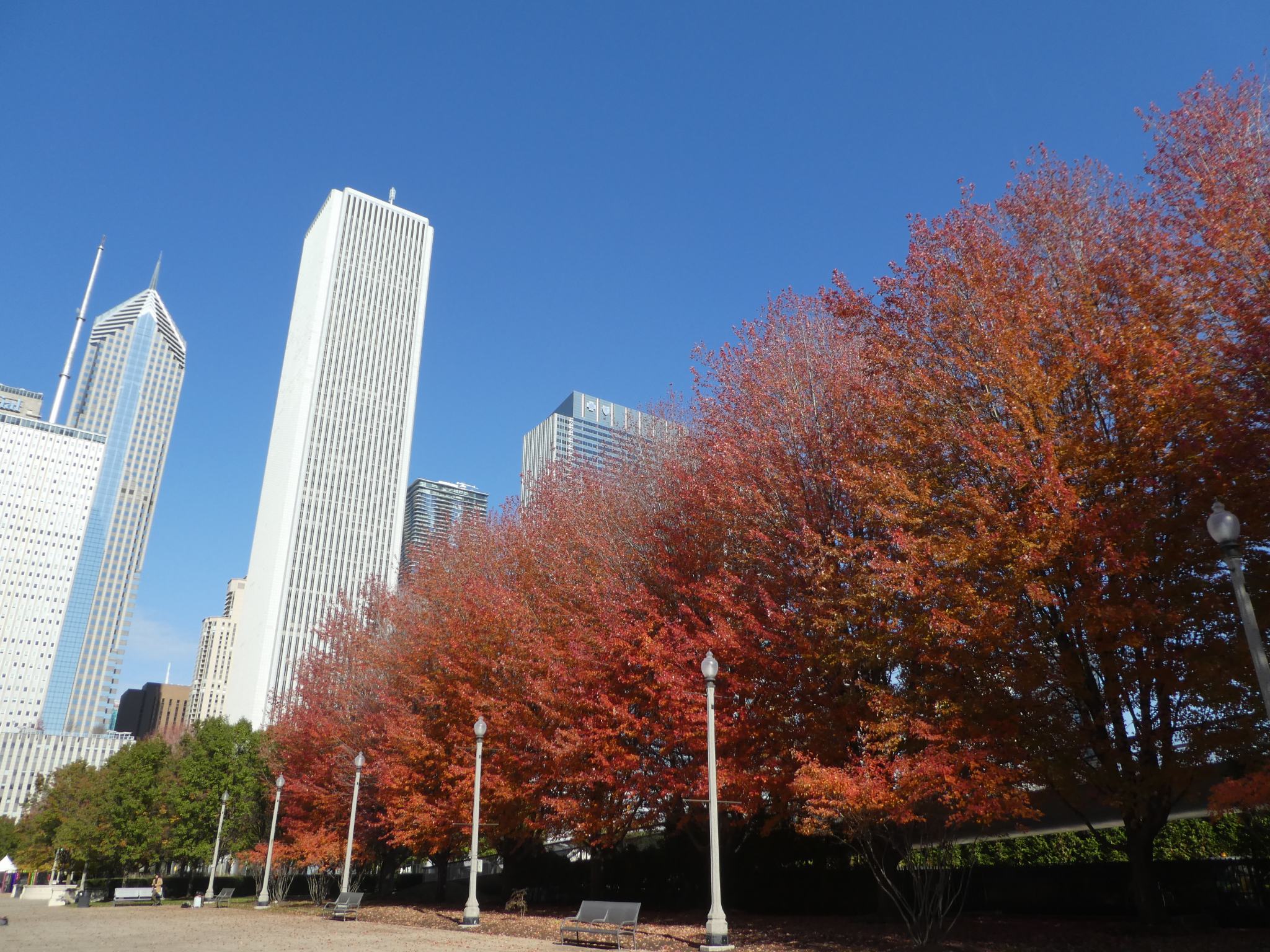 Chicago is a city of amazing architecture.  Frank Lloyd Wright, who lived and worked at nearby Oak Park, once said “Eventually I think Chicago will be the most beautiful great city left in the world.”

The Great Fire of 1871 inspired architects and engineers to come up with safer, stronger buildings, and unprecedented prosperity from the late 1800s through to the Great Depression brought massive population growth and sparked a building boom.

The world’s first skyscraper, the Home Insurance Building, was built in Chicago in 1884.  New York City is more famous for its turn of the century skyscrapers, but actually the term was invented in Chicago more than a decade before New York got its first one.

One of the best ways to see the city is on an architectural boat tour on the Chicago River.  Cruising slowly up the river, a guide from the Chicago Architecture Centre provides a running commentary on the full range of skyscrapers, from those early buildings through to modern ones.

When work started on the Wrigley Building in 1920, there were no major office buildings north of the Chicago River.  Built as the corporate headquarters of the Wrigley Company – yes, the chewing gum business was very lucrative, it seems – this was the first air-conditioned office building in Chicago. 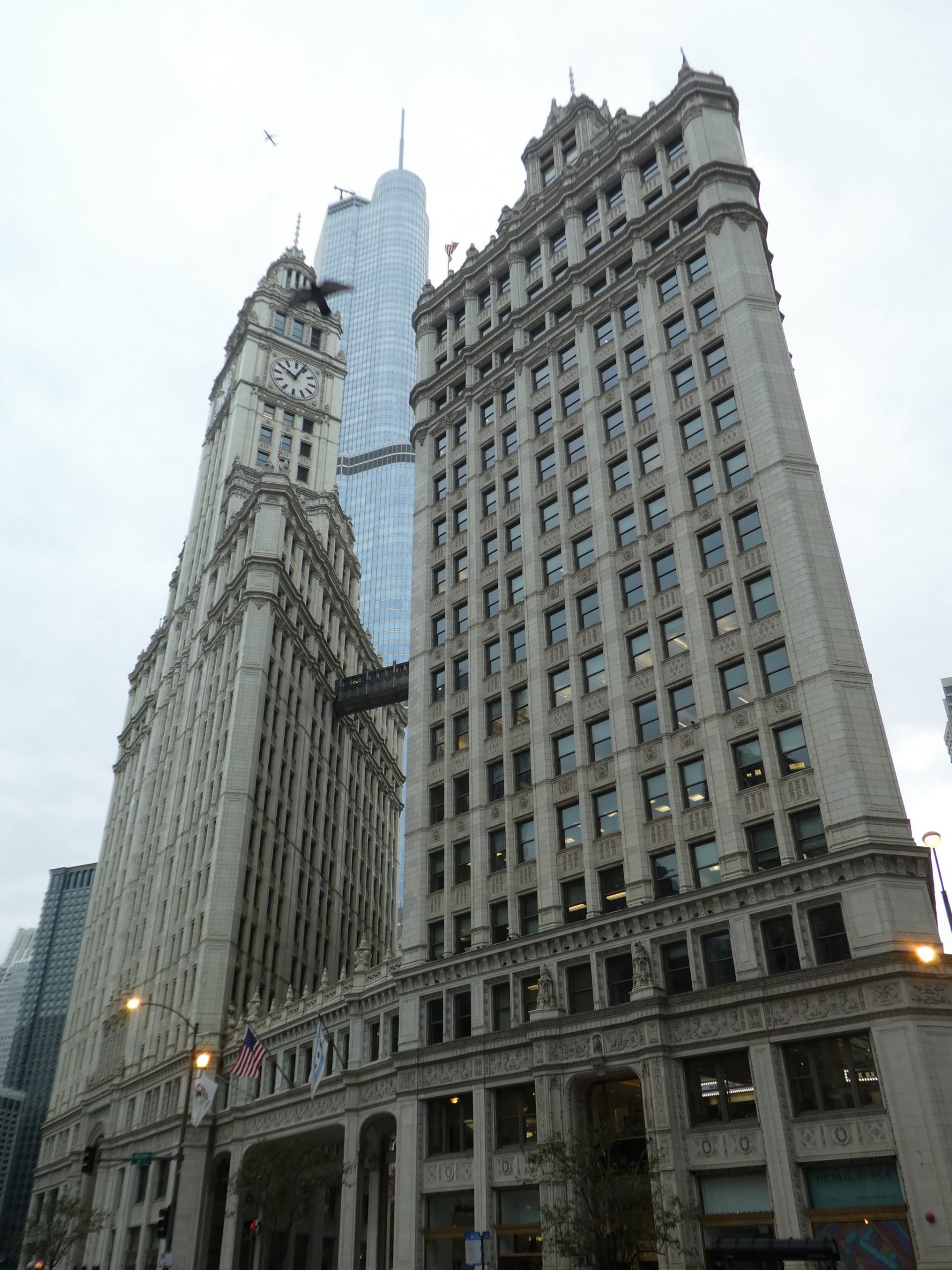 The neogothic Tribune Tower was built in the mid 1920s following a competition run by the site’s owner, the Chicago Tribune to design ‘the most beautiful and distinctive office building in the world’.   Currently under restoration, the facade includes sculptures of Robin Hood and a howling wolf in a nod to the winning architects, Hood and Howells. 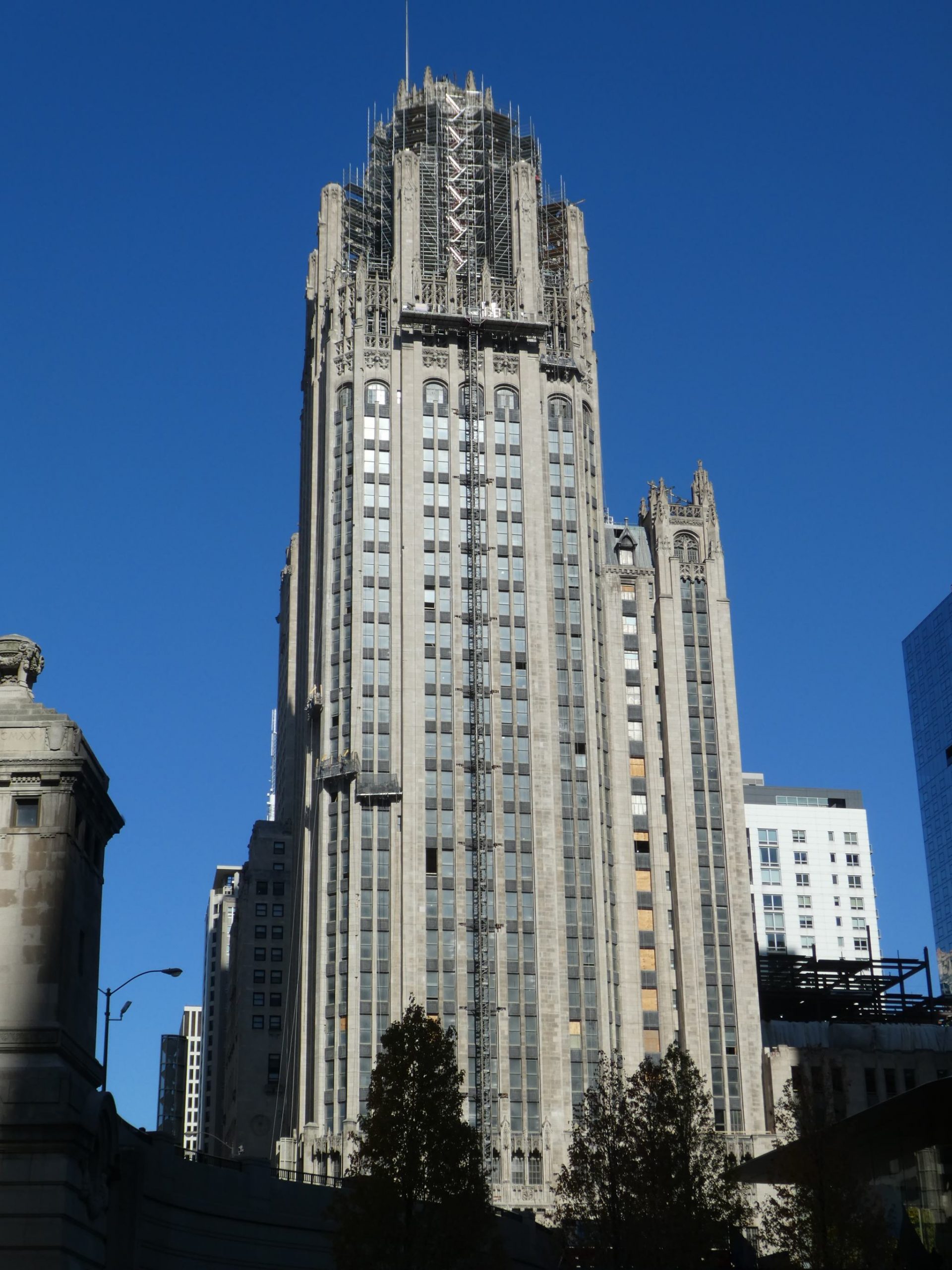 There’s a bunch of Art Deco beauties as well, including the Carbide and Carbon building, which is said to have been modelled on a champagne bottle. 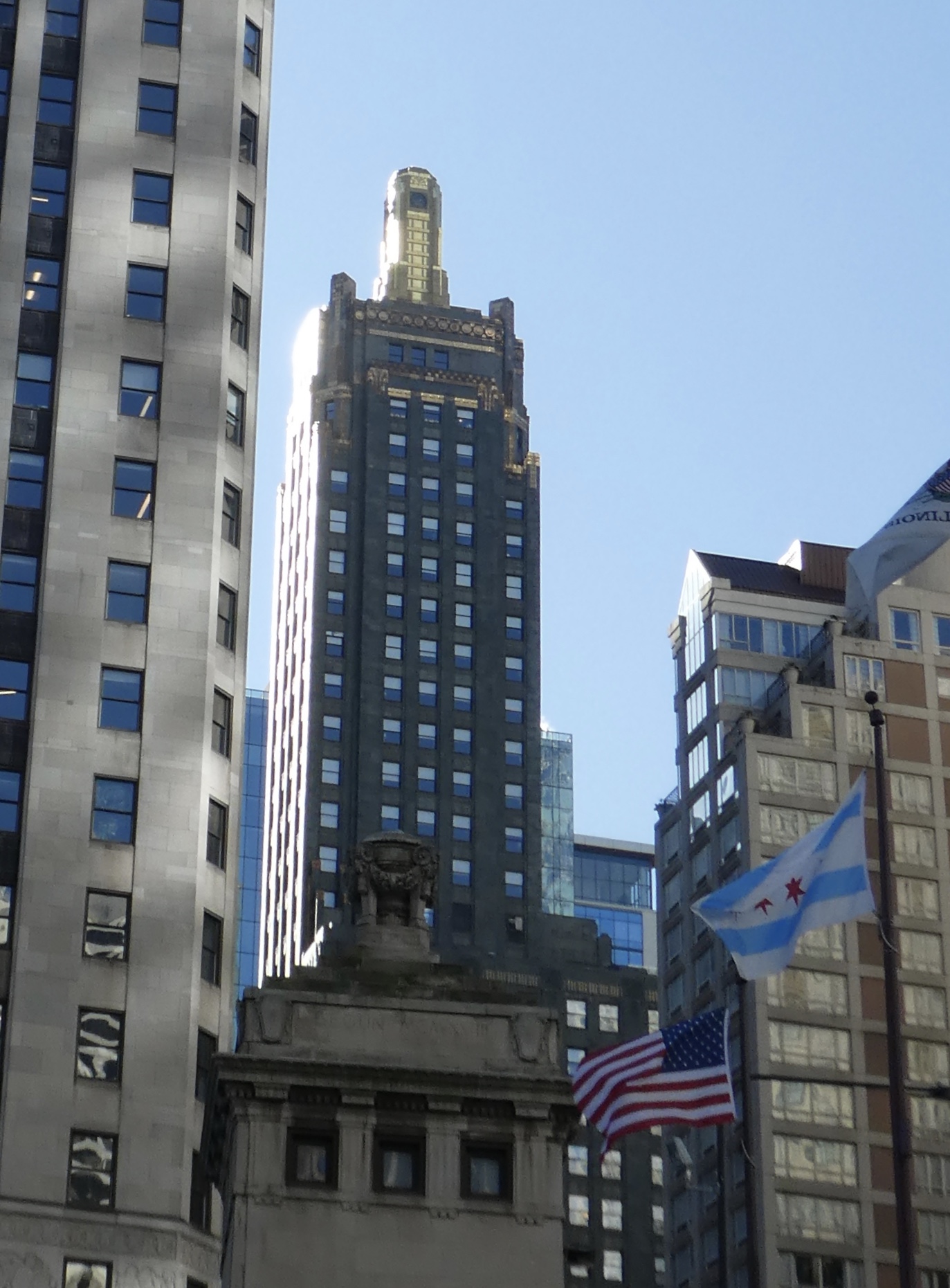 The Civic Opera Building opened on 4 November 1929, just in time to fail when, less than a week later, the Black Tuesday stockmarket crash heralded the start of the Great Depression.  Spectacularly bad timing. 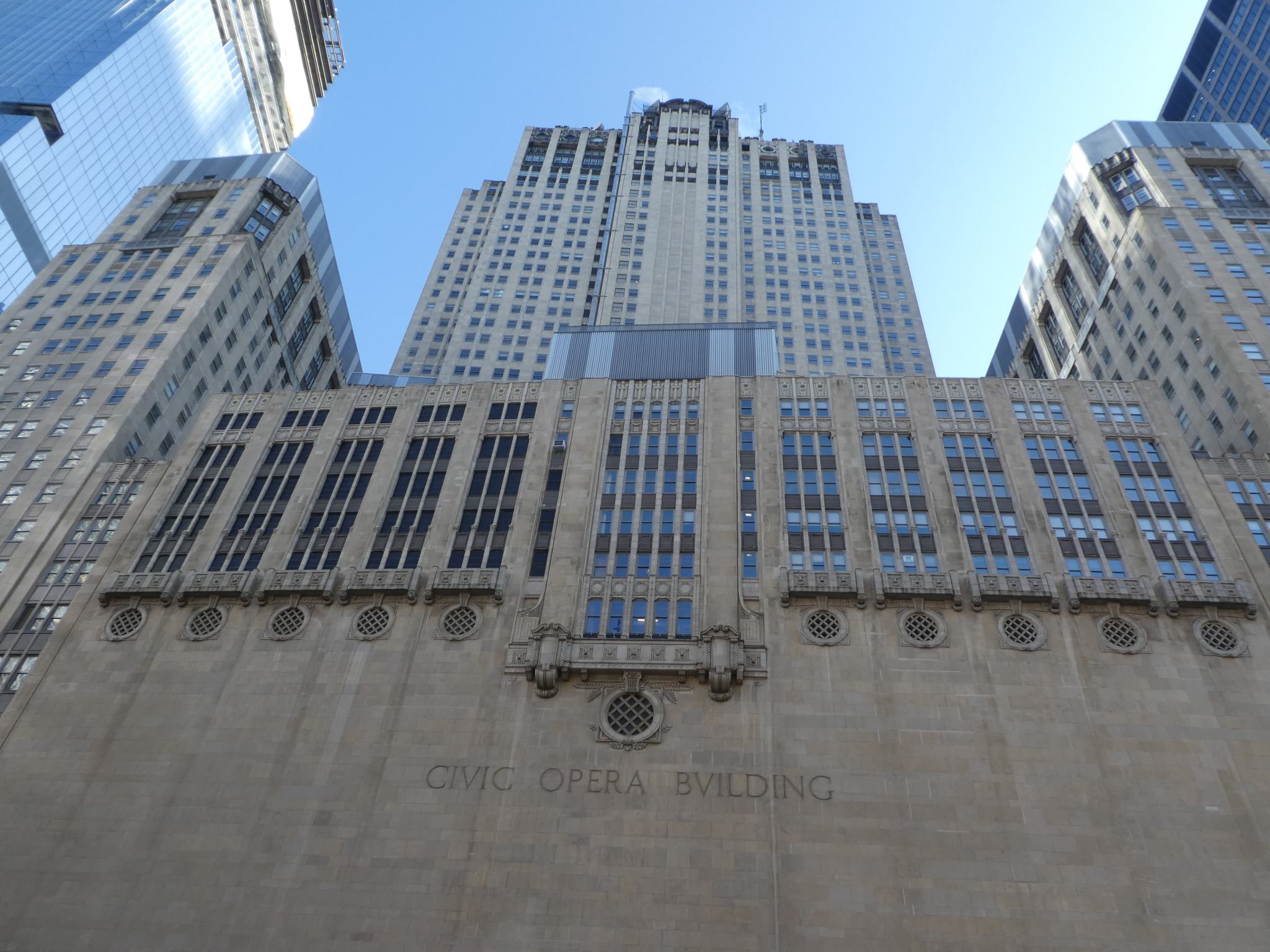 When completed in 1973, the 110 story, 442 metre high Willis Tower (formerly the Sears Tower) was the world’s tallest building.  In the fine tradition of rivalry between Chicago and New York, it edged out the 417 metre World Trade Centre which had claimed the title when it was finished just a few months earlier.

It held the record for 25 years, until it was surpassed by the Petronas Towers in Kuala Lumpur in 1998.  Even after that, it was still the tallest building in the Western Hemisphere until 2014 when the new One World Trade Centre opened.

Those claimed records are hotly disputed because to get them you have to include the spires on the top of the building – but try having that debate with a Chicagoan. 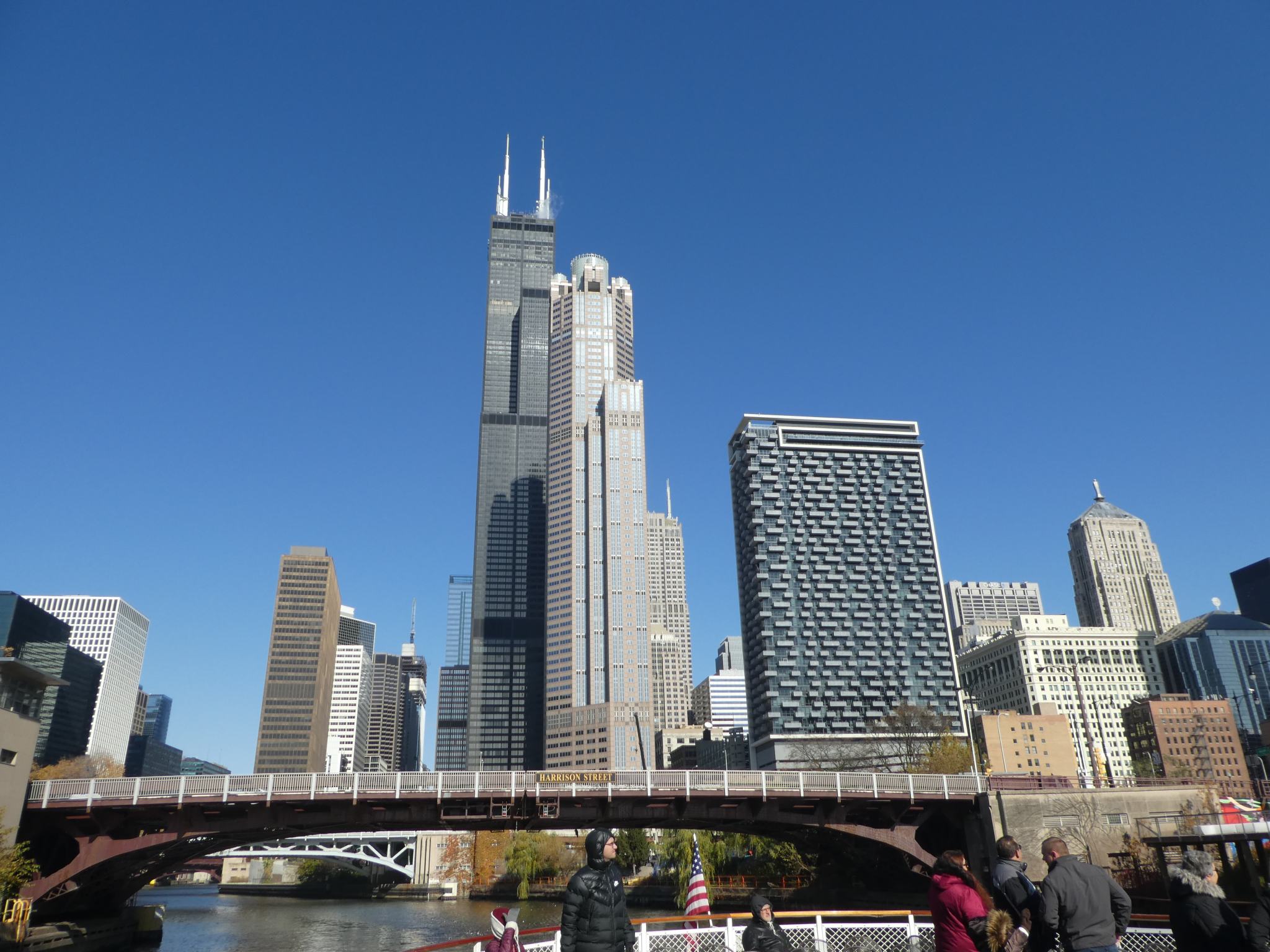 The boat tour was excellent, until our butts froze to the metal chairs on the open deck of the boat.  It was still sunny but the temperature was a bracing -2 degrees.

Back on dry land, there’s also a lot of buildings which make a walk around the city centre worthwhile.  The Rookery has a foyer originally designed by locally famous architect, the delightfully named John Wellborn Root.  His original design was later renovated and restyled by Frank Lloyd Wright. 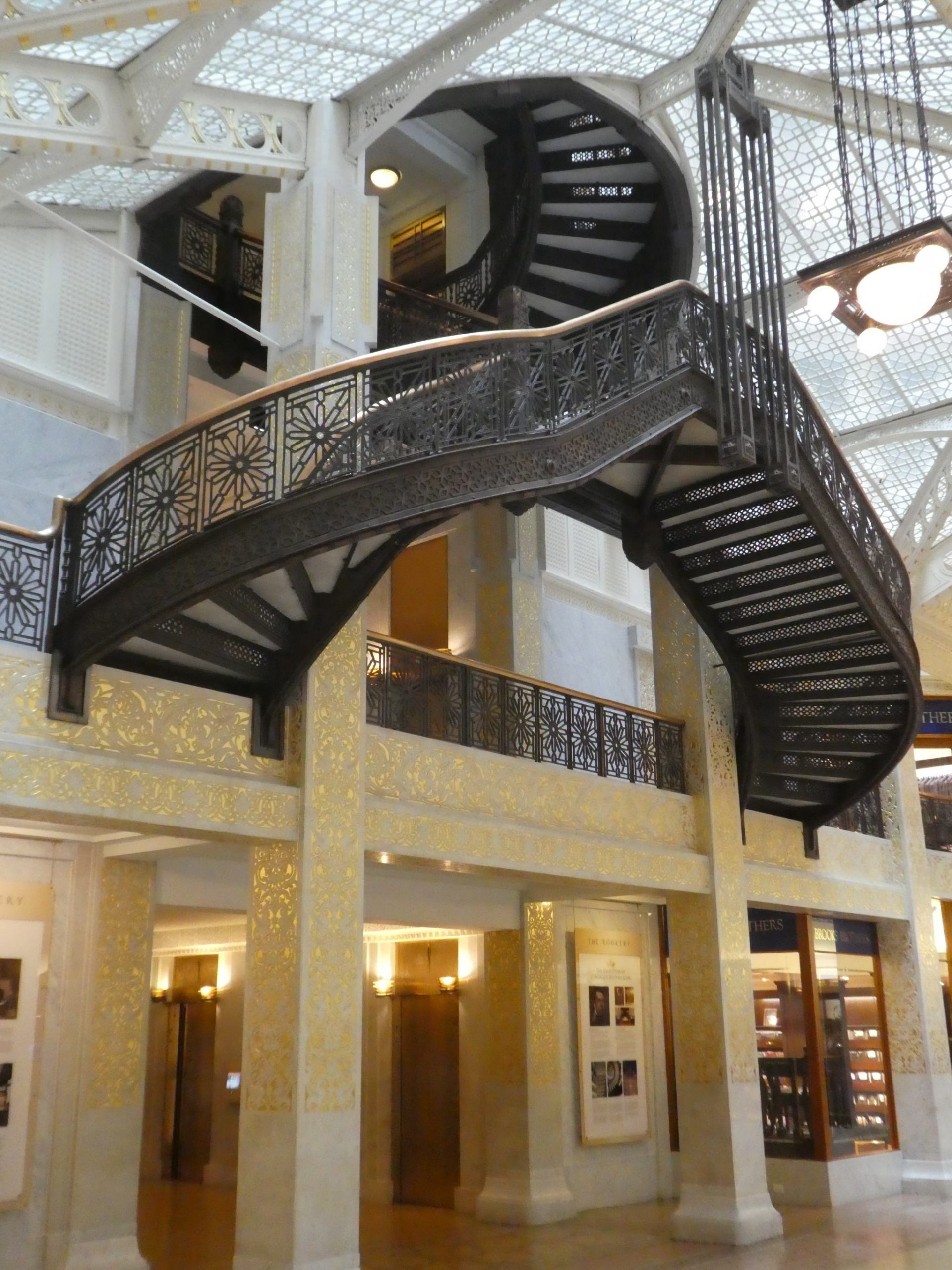 The Marquette Building, completed in 1895, is one of Chicago’s earliest steel frame skyscrapers.

Named after the Chicago area’s first European settler, Father Jacques Marquette, the hexagonal railing around the lobby atrium has a mosaic frieze depicting Marquette’s life, his 1674-5 expedition through what is now Illinois and his interactions with Native Americans.  The mosaic was designed by Louis Comfort Tiffany (another delightful name!) of the Tiffany Company and contains panels of lustered Tiffany glass, mother of pearl and semi-precious stones. 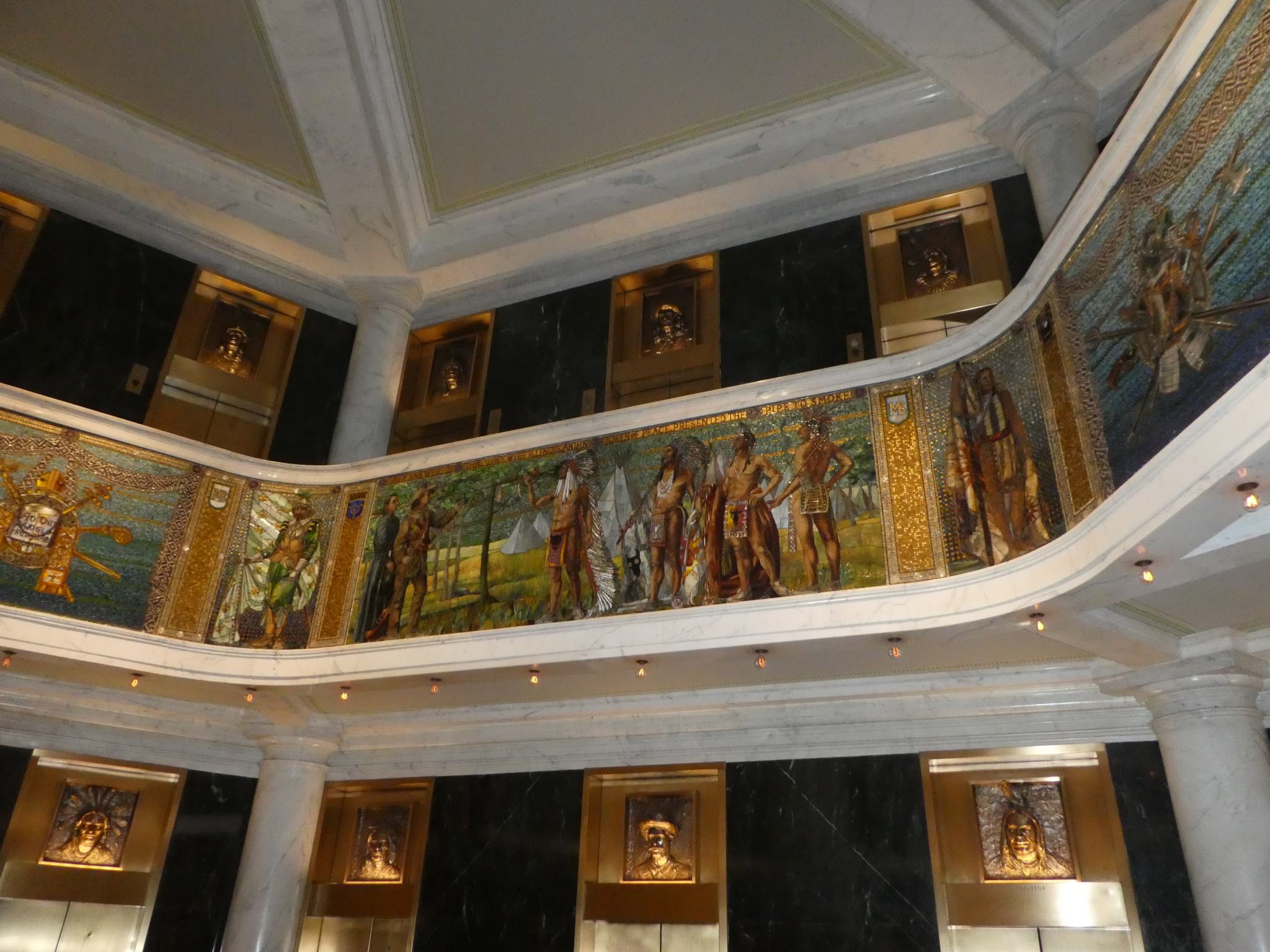 Another stunning Tiffany creation is the 11.6 metre diameter stained glass dome in the Chicago Cultural Centre.  This masterpiece is believed to be the largest Tiffany dome still in existence.  Completed in 1897, it has 30,000 individual panes of glass.

The building originally housed the Chicago Public Library.  It was acquired by the Cultural Centre in 1986, and although the building was valued at $US2 million, the dome alone is currently valued at $US35 million. 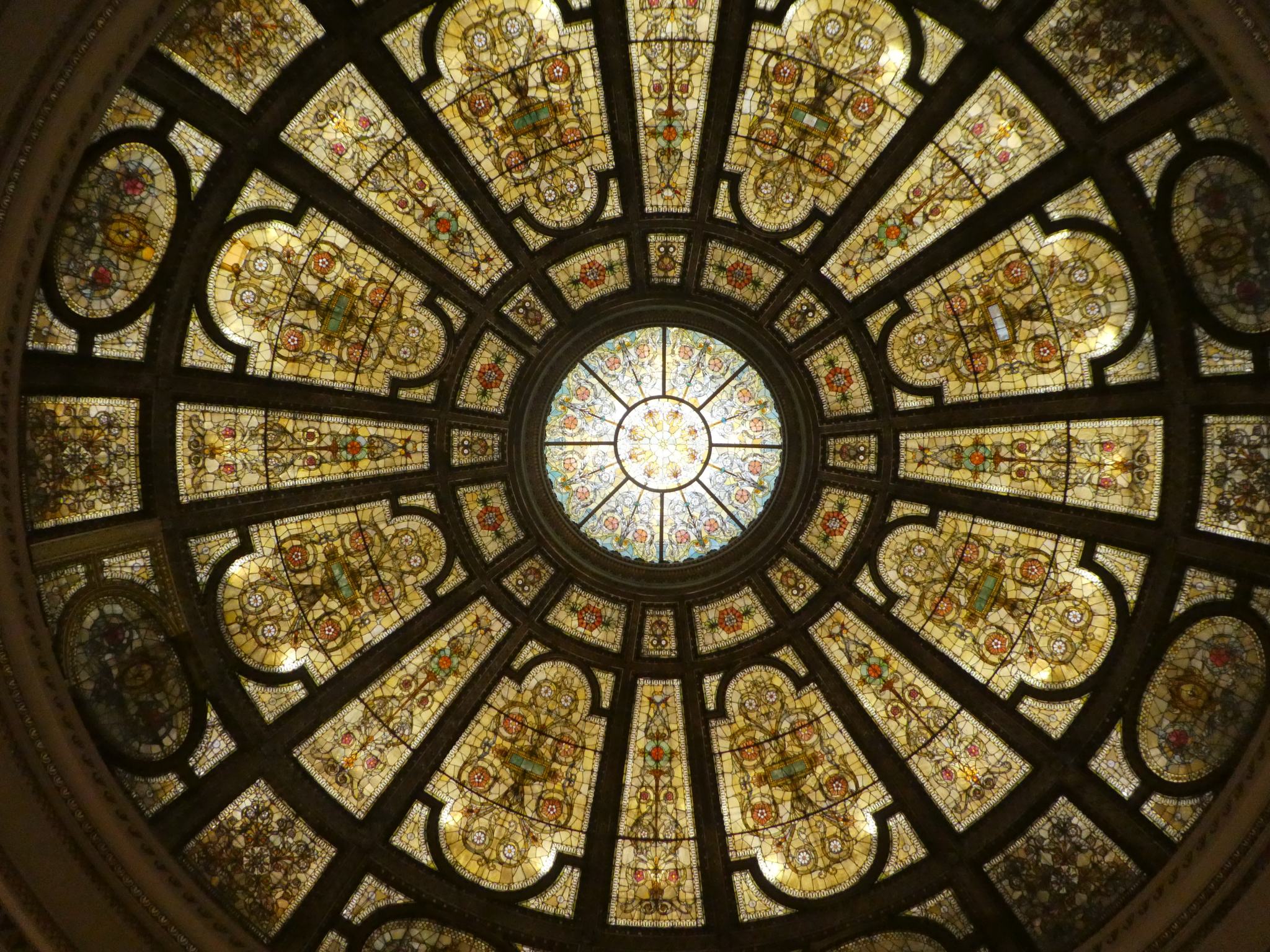 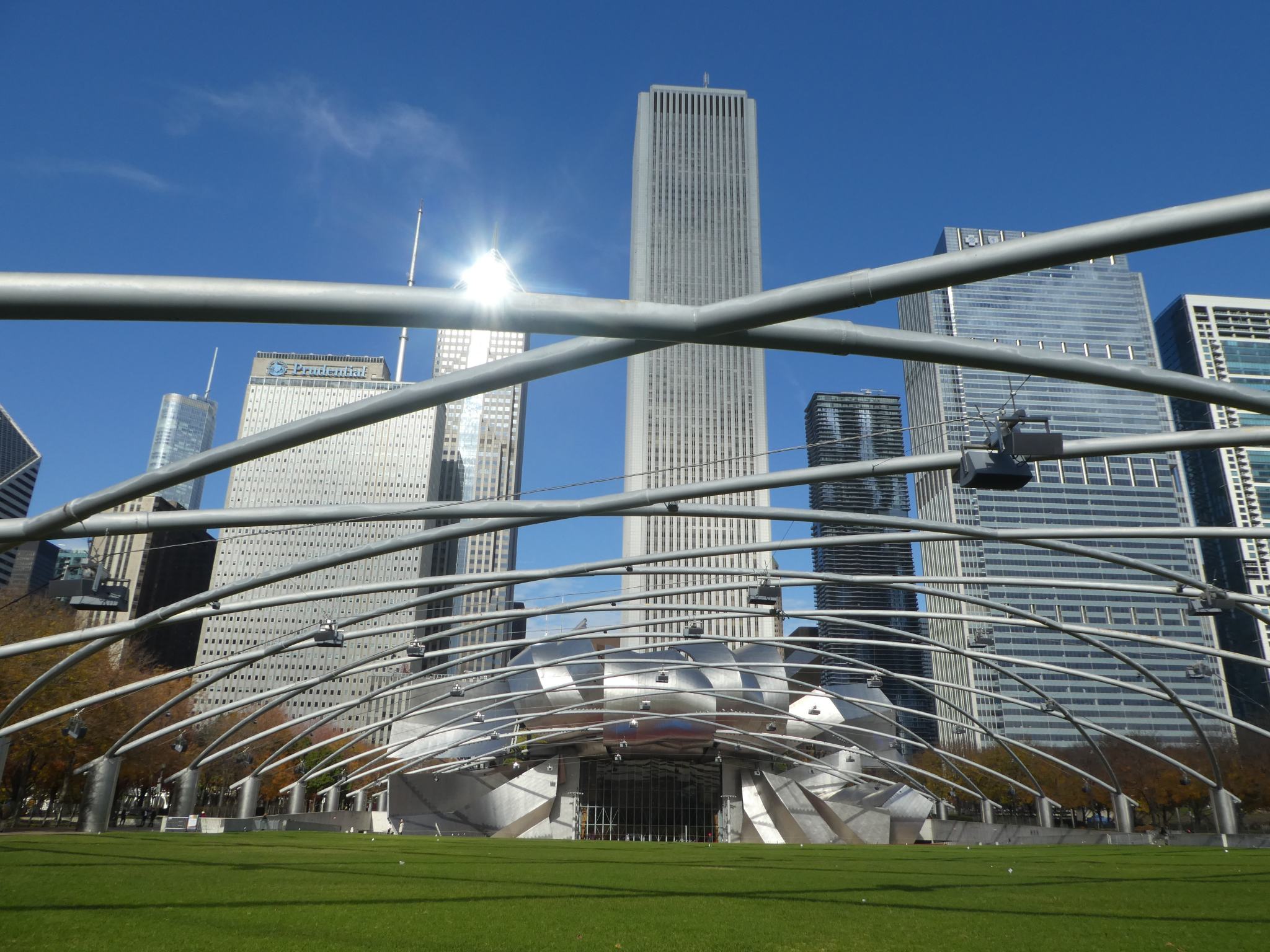 There’s also Crown Fountain.  A pair of 15 metre tall glass brick towers face each other and use LEDs to display slowly moving images of Chicago citizens.   We were a bit confused about the name, since there’s no water.  But evidently from May to October the images spout water from their mouths into the space between the towers, whose black basalt surface becomes a reflecting pool in which visitors are welcome to splash about. 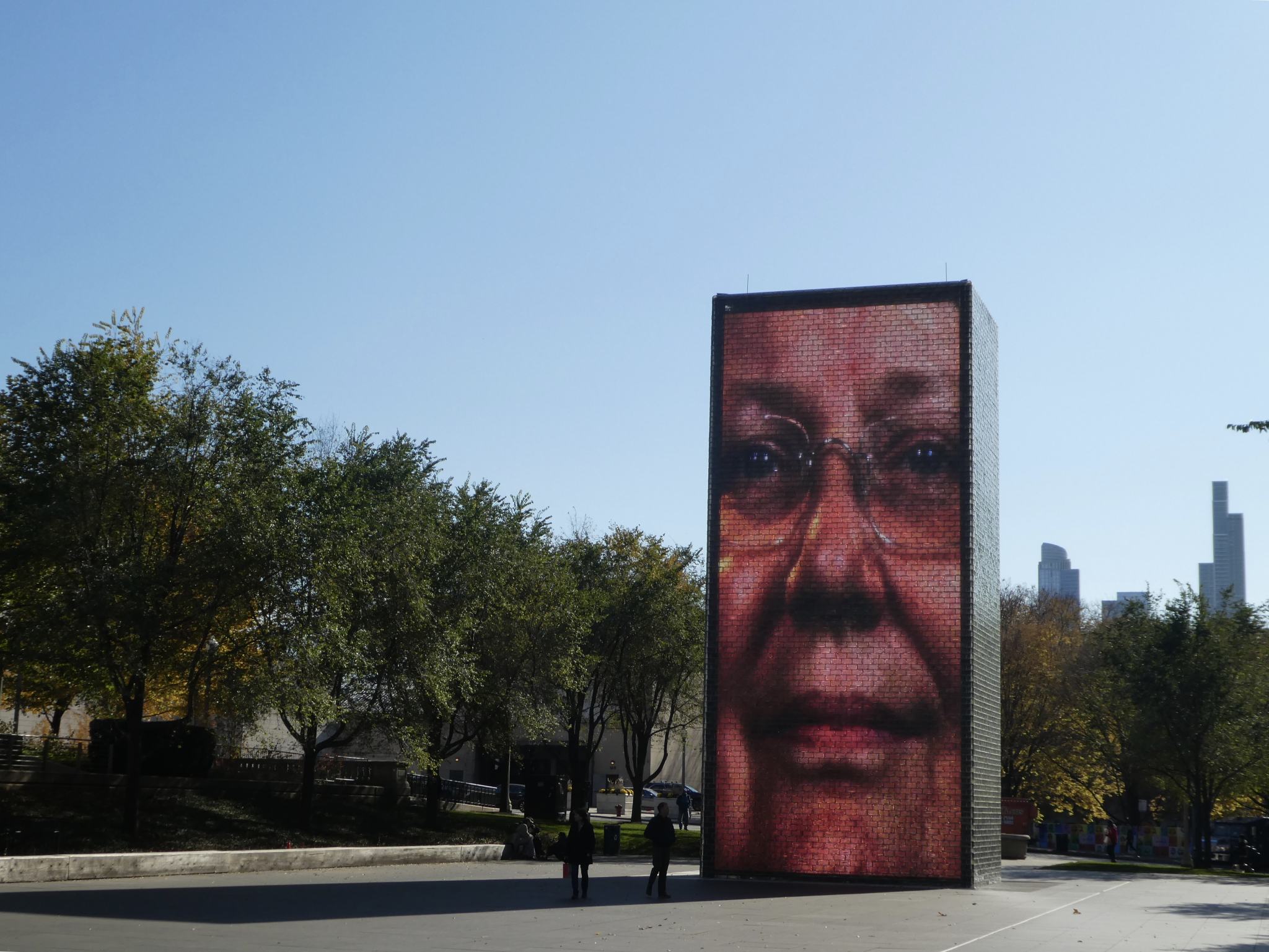 But best of all, and our favourite thing in Chicago, is Cloud Gate.  Affectionately known as the Bean, this monumental stainless steel sculpture is a creation of Indian-born artist, Anish Kapoor, who is known for large-scale outdoor works.  This one is his most famous and is one of Chicago’s most visited sites.

Looking at it face on, it looks like a bean, and reflects the sky in a way which really does look like a gate to the sky.  Walk around it and it looks totally different from every angle.  It is just so, so clever. 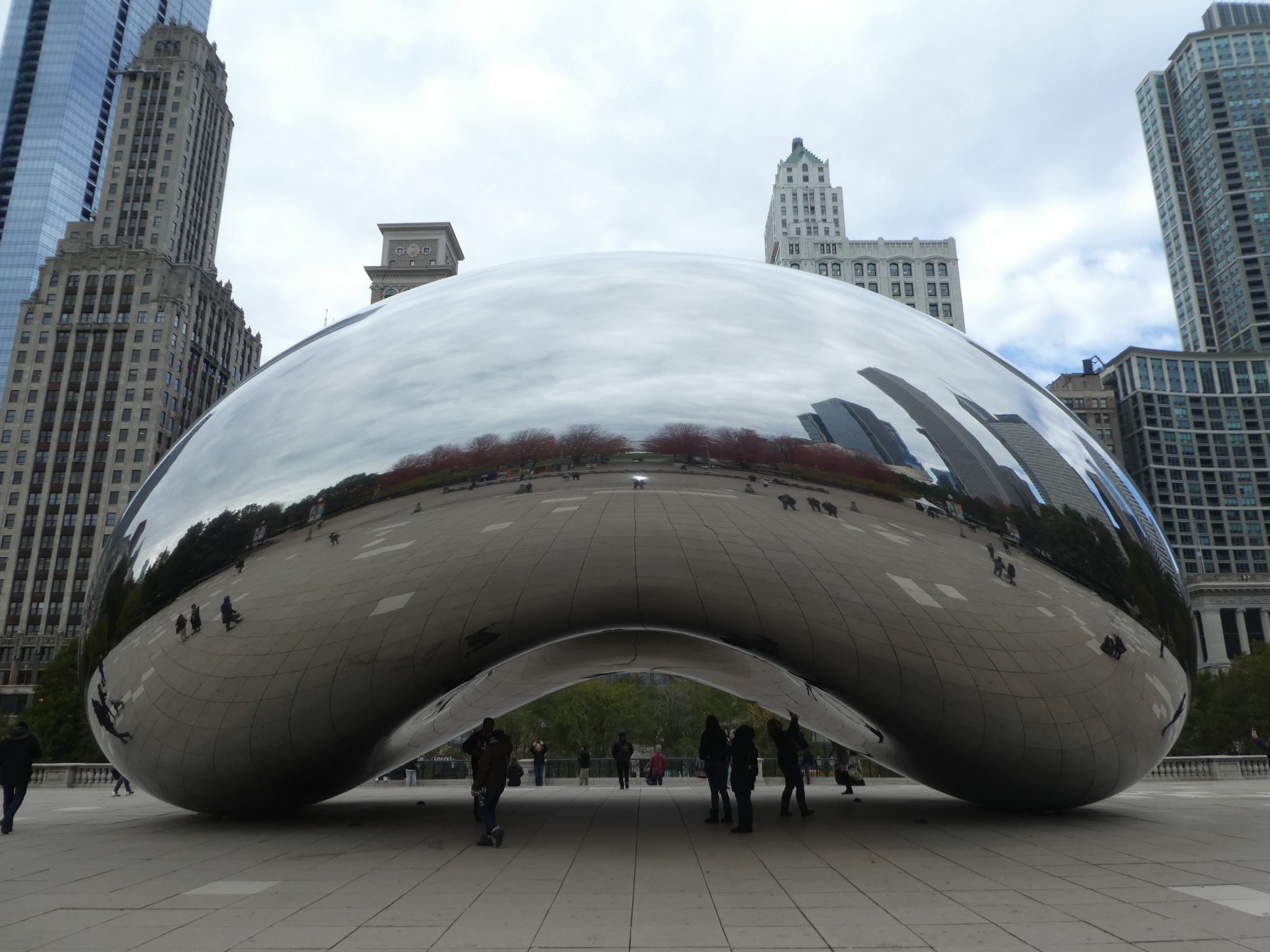 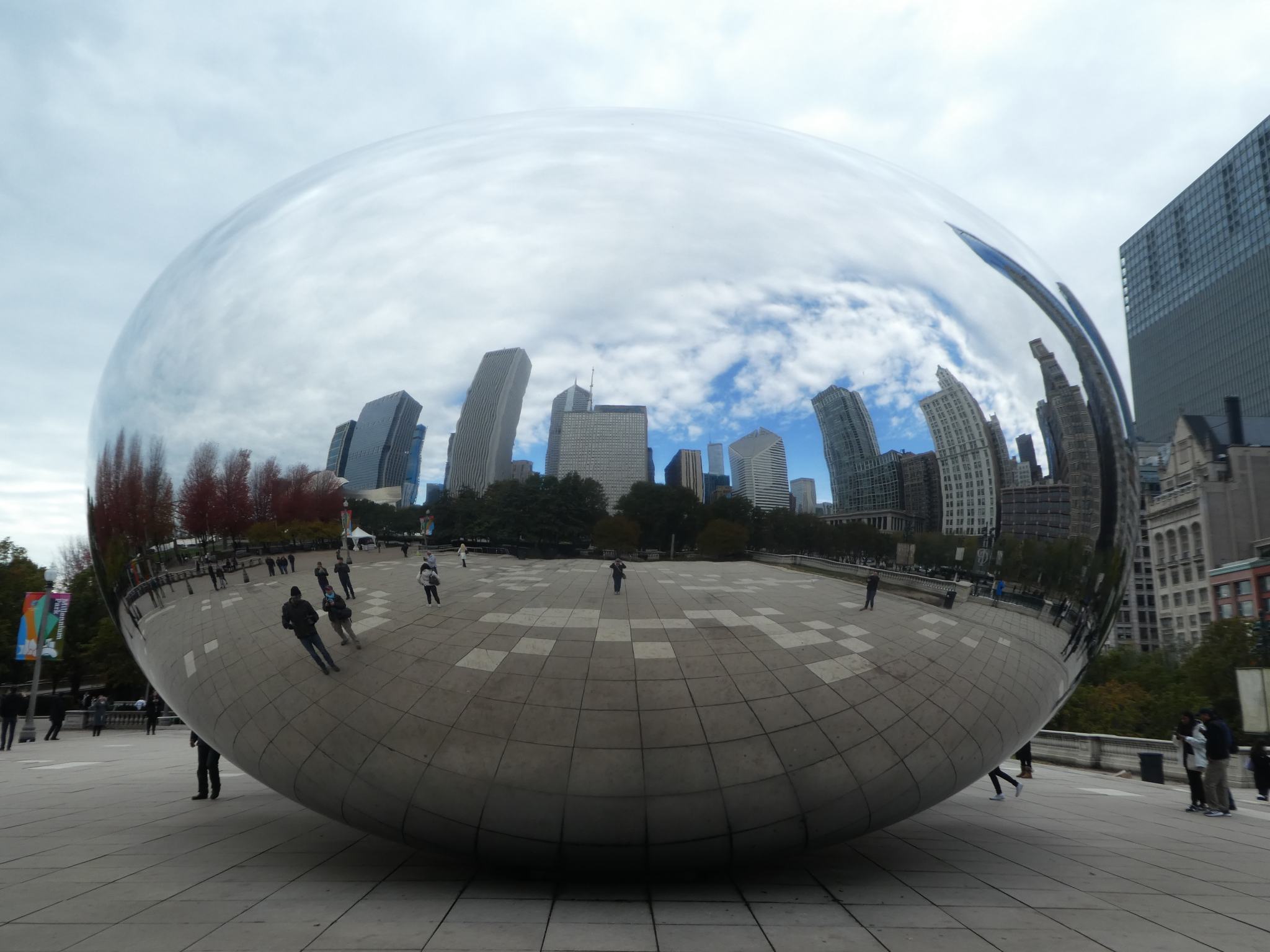 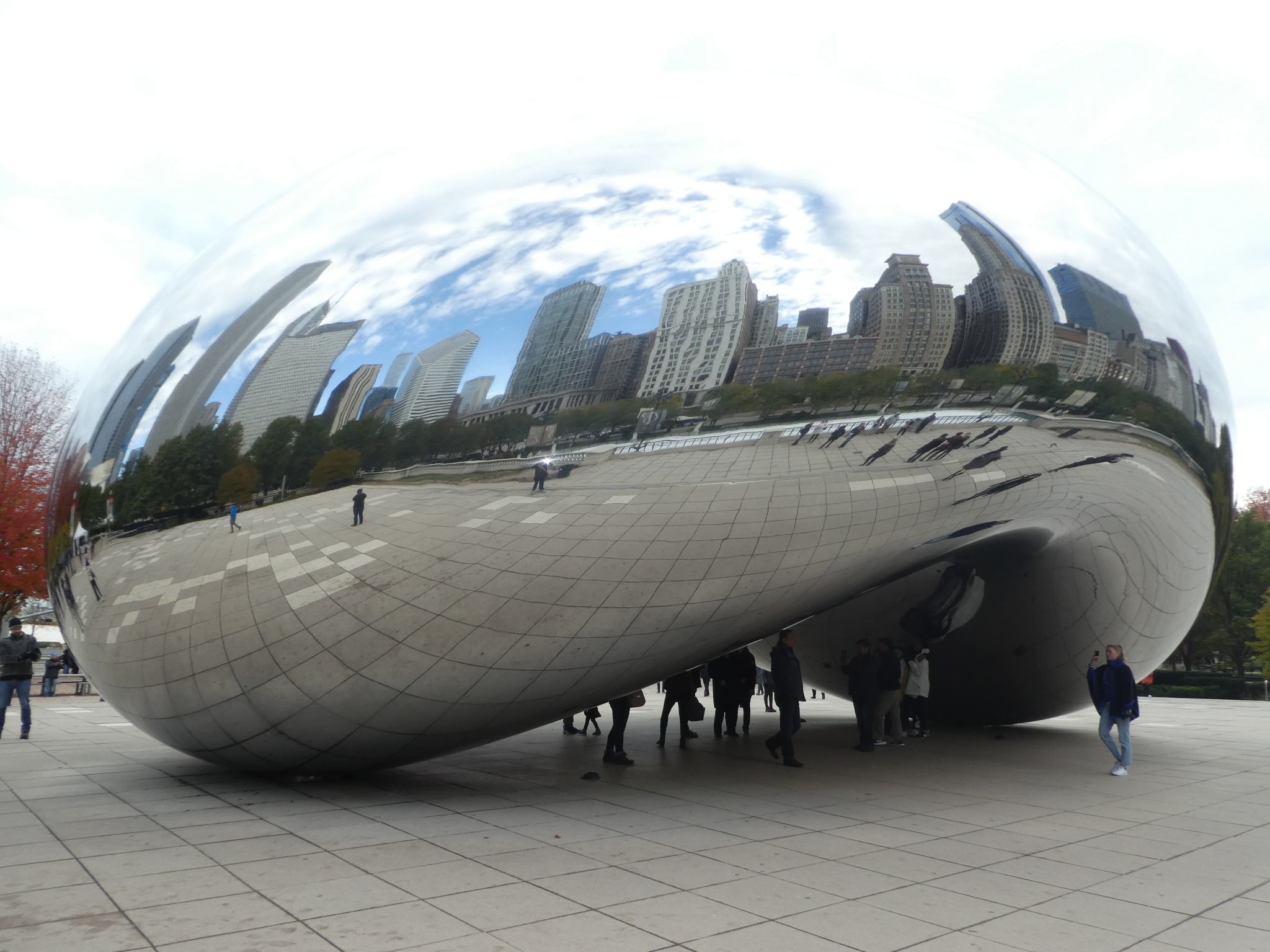 The Chicago History Museum comprises a series of exhibition rooms, each dedicated to a particular aspect of Chicago’s history – the railways and slaughteryards responsible for Chicago’s early prosperity, the rise of the department stores and mail order industry which began in Chicago and changed American retailing forever, Al Capone and prohibition, Abraham Lincoln, Martin Luther King and many others.

There’s one on innovations developed in Chicago.  Who knew that one of the most quintessential of American pantry staples, dehydrated mac and cheese, was invented right here in Chicago! 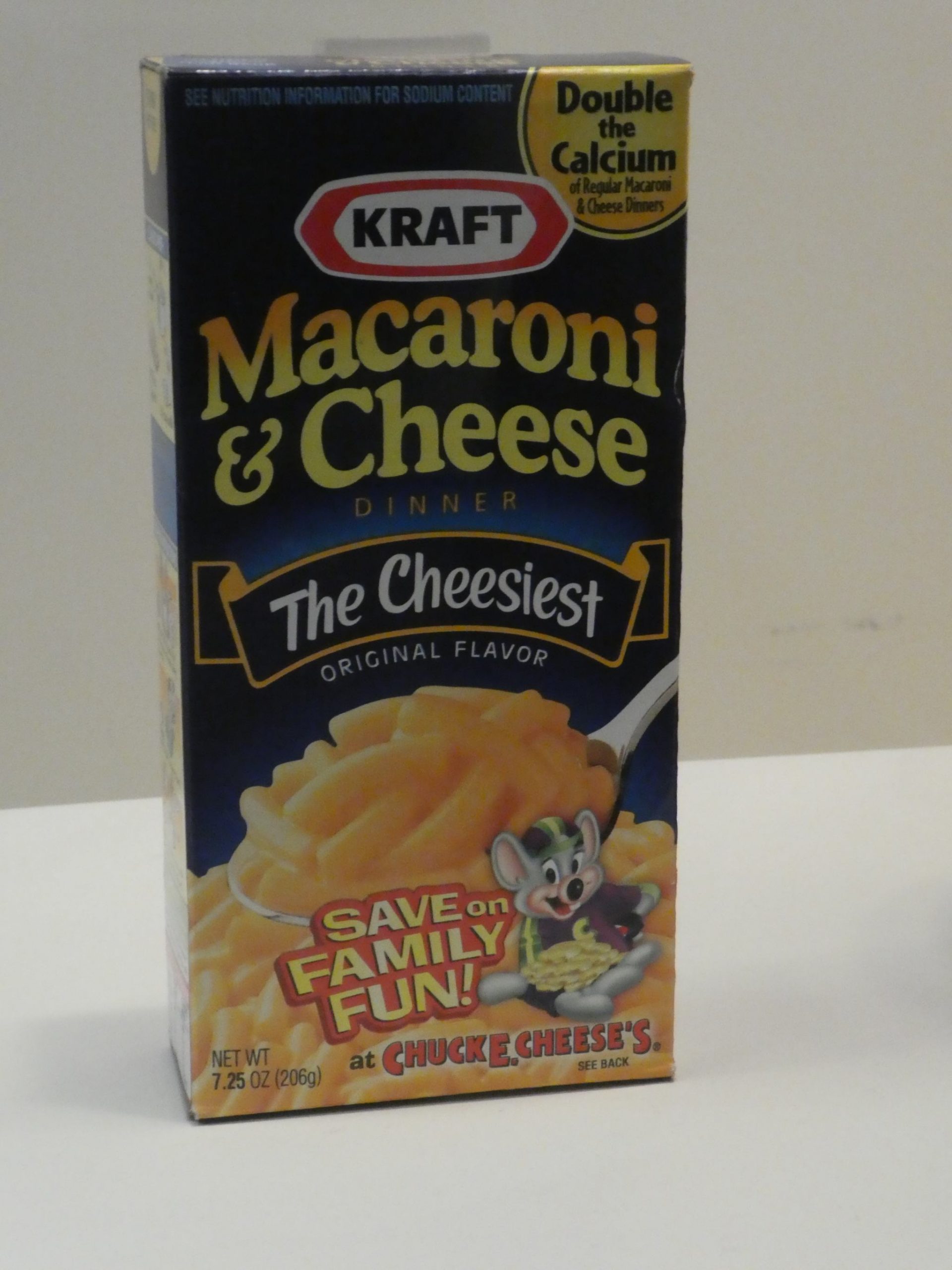 There’s even an exhibit on Mexican Jumping Cars.  These customised lowrider motor cars which appear to hop on their wheels were pioneered by Mexican immigrants in the 1960s. 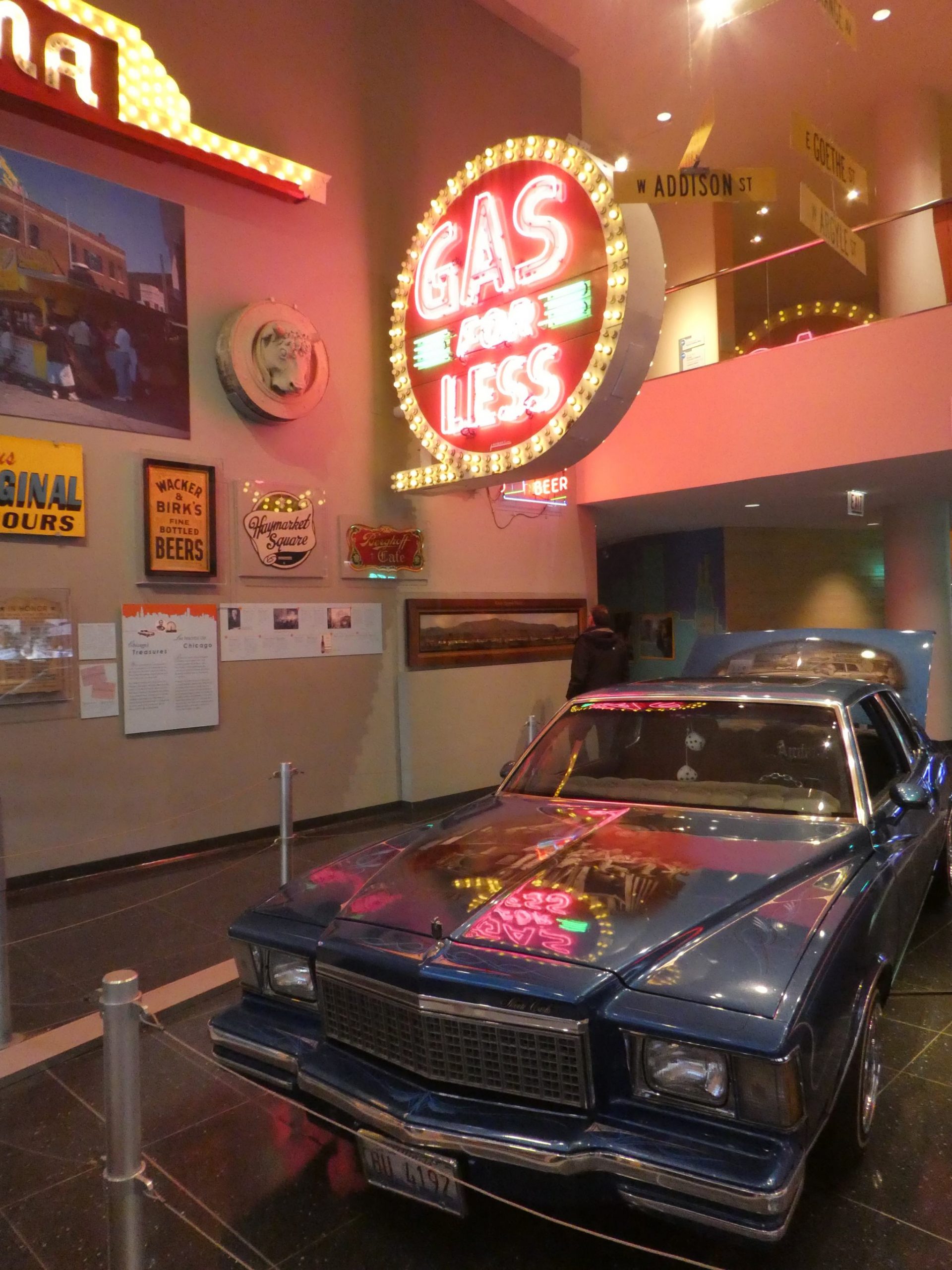 The historic Route 66 begins – or ends, depending on your direction of travel, on Adams Street.  We’ll be back to drive it one day. 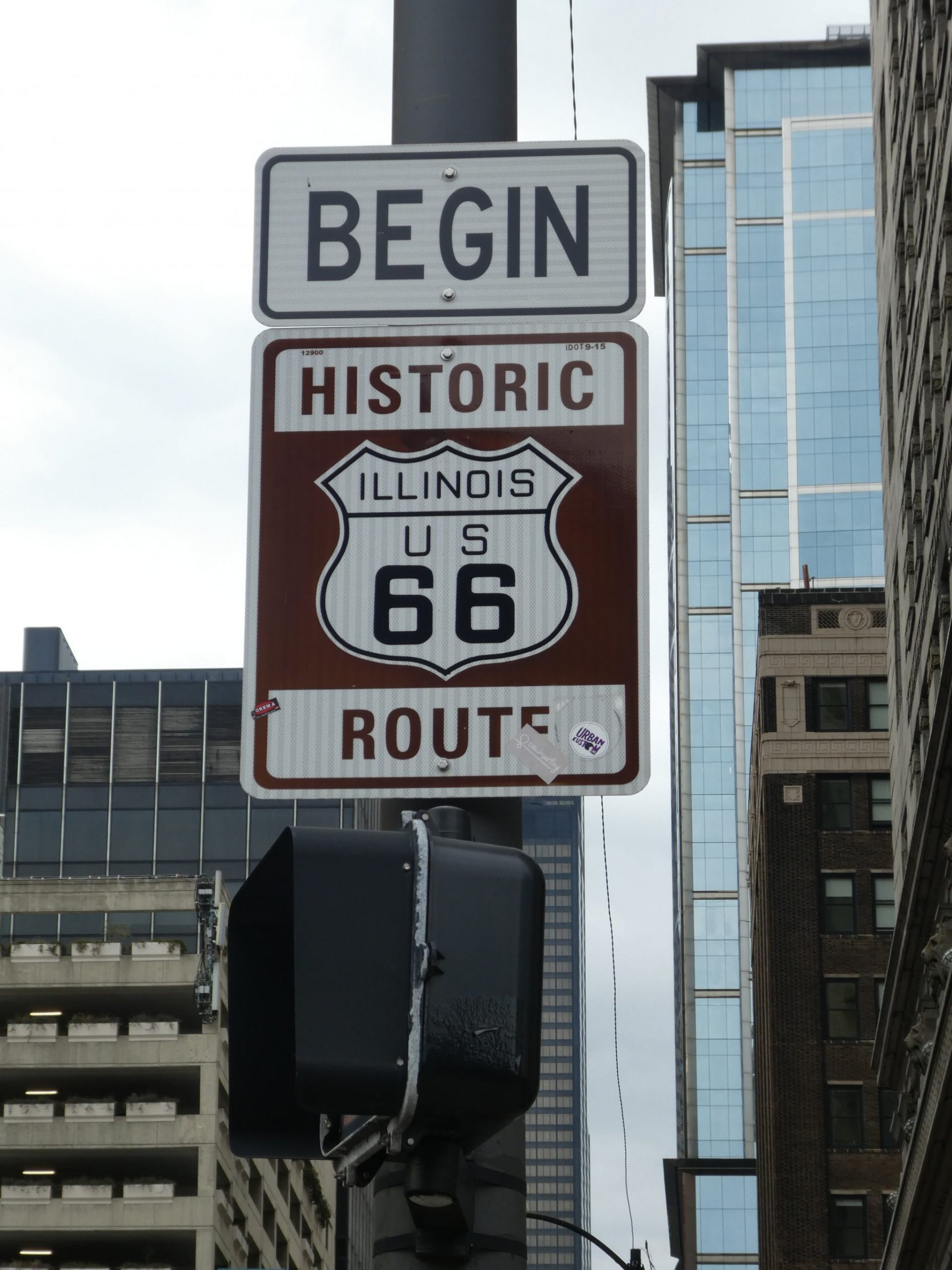 Blues Brothers movie fans may remember the closing scenes in which Jake and Elwood come screeching to a halt outside the Cook County Clerk’s office, where they run in to pay the taxes which will save the orphanage where they grew up. 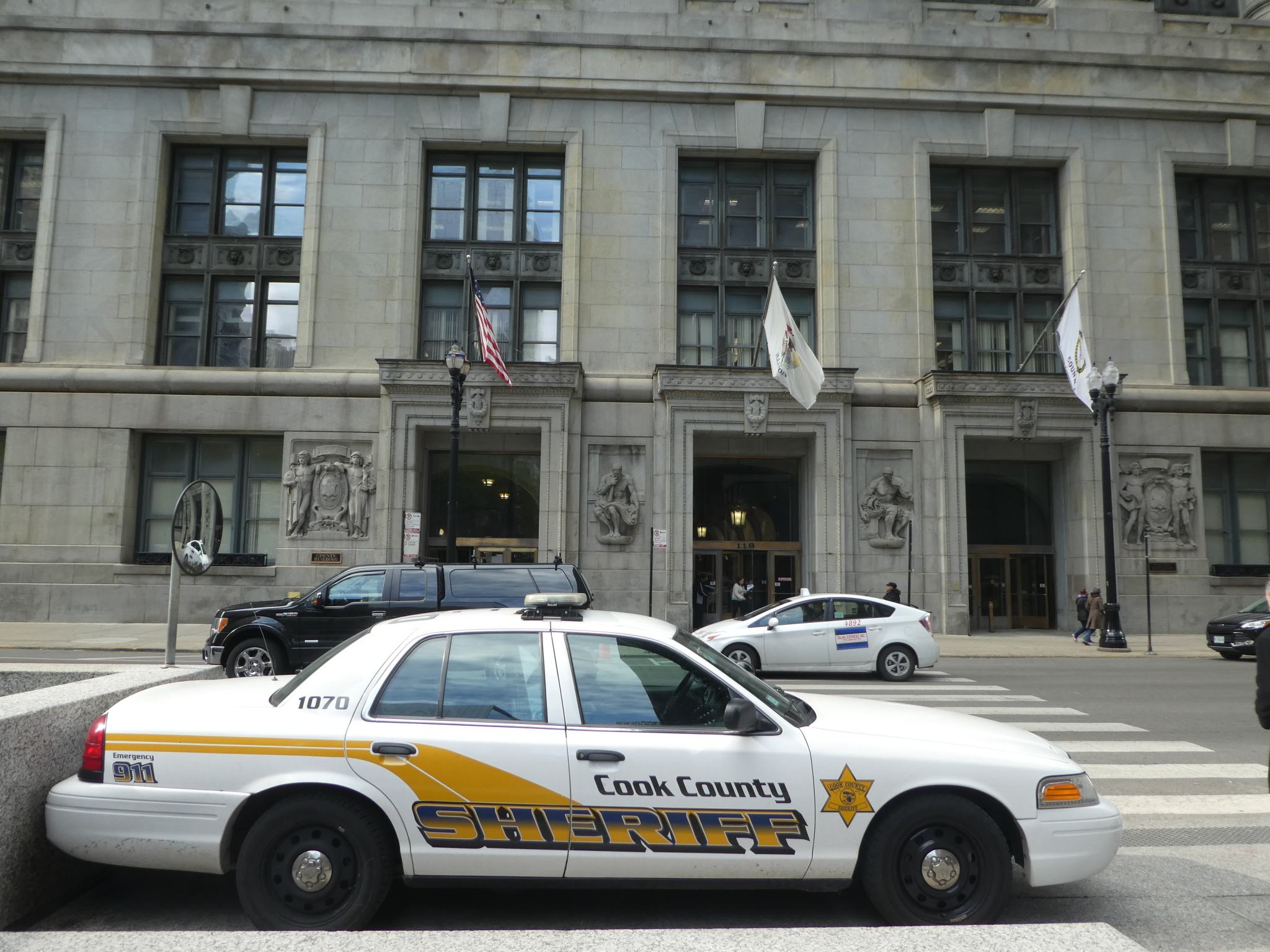 To reach it they crash through Daly Plaza, passing the Picasso statue in its centre.  Picasso was asked to take a commission to create a sculpture for the plaza.  He refused the money, making the statue a gift to the city.

It was controversial when unveiled in 1966.  Newspaper columnist, Mike Royko wrote “it has a long stupid face and looks like some giant insect that is about to eat a smaller weaker insect” but he also thought it was very ‘Chicago’, writing “its eyes are like the eyes of every slum owner who made a buck off the small and weak.  And of every building inspector who took a wad from a slum owner to make it possible”.

The sculpture is untitled and Picasso never explained what it is.  It’s been speculated that it is a bird, an aardvark, Picasso’s pet Afghan hound, a baboon’s head or even one of his models, Sylvette David.  We hope for her sake that’s not so. 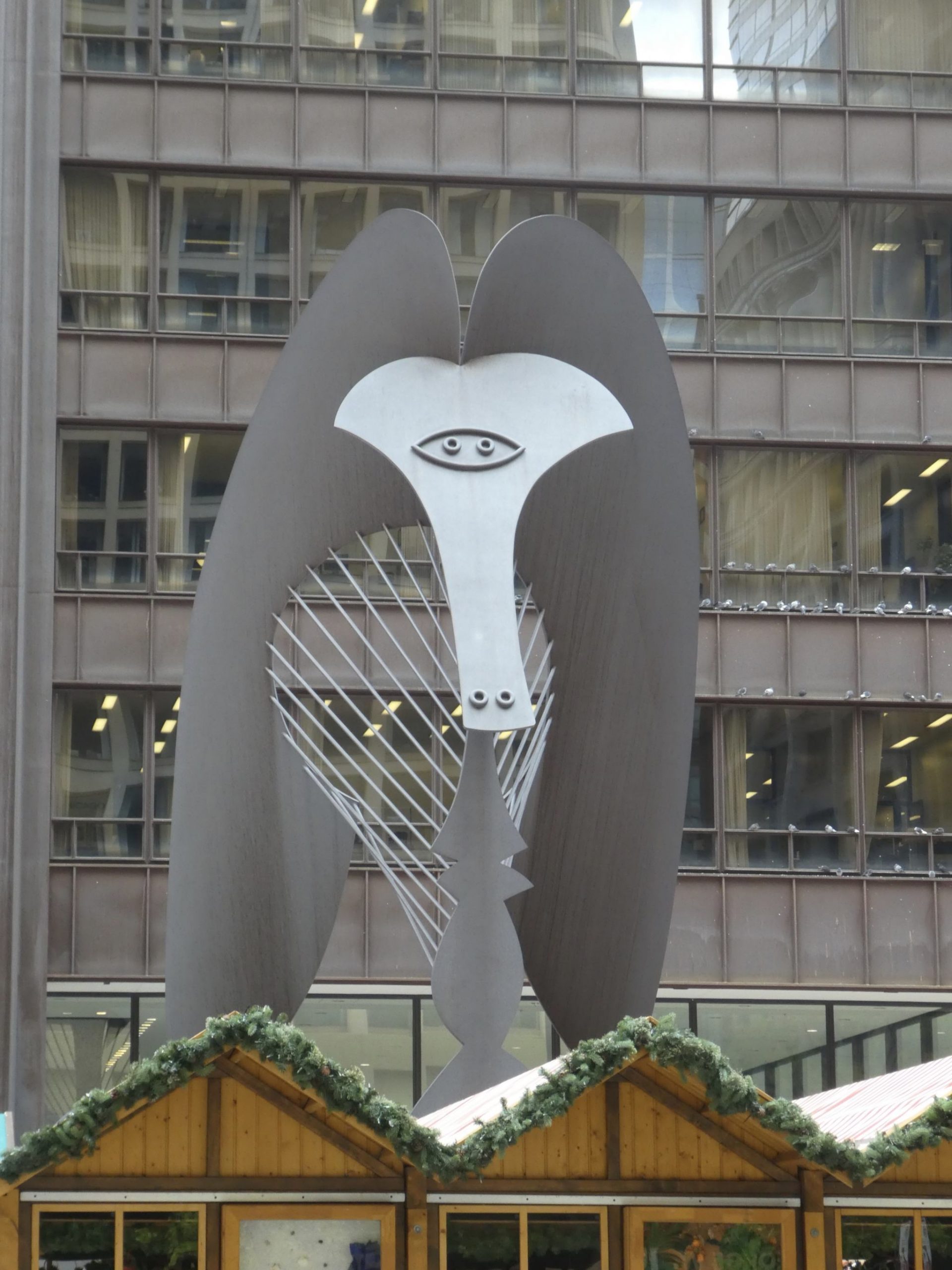 Across from the Plaza is an equally obscure work by famous Spanish artist, Joan Miró.  Originally titled The Sun, the Moon and One Star, it’s now just called Miró’s Chicago.  We think it looks more like a giant bbq fork. 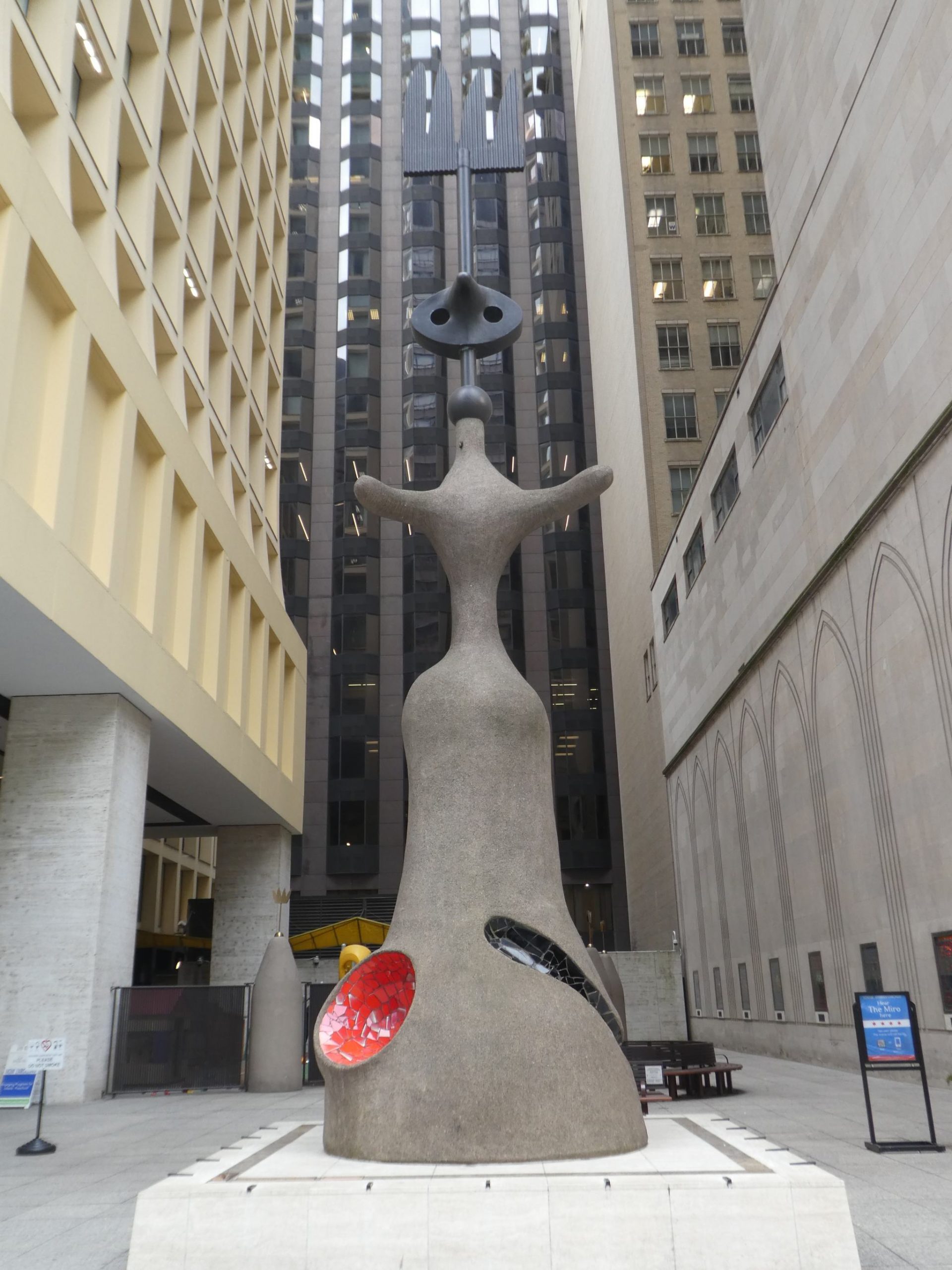 In 1860 Chicago hosted the Republican National Convention which nominated Abraham Lincoln for President.  He had previously been an Illinois senator.  As such, there are many statues of Lincoln scattered around the city.

And there’s also this one of the USA’s first President, George Washington with colleagues. 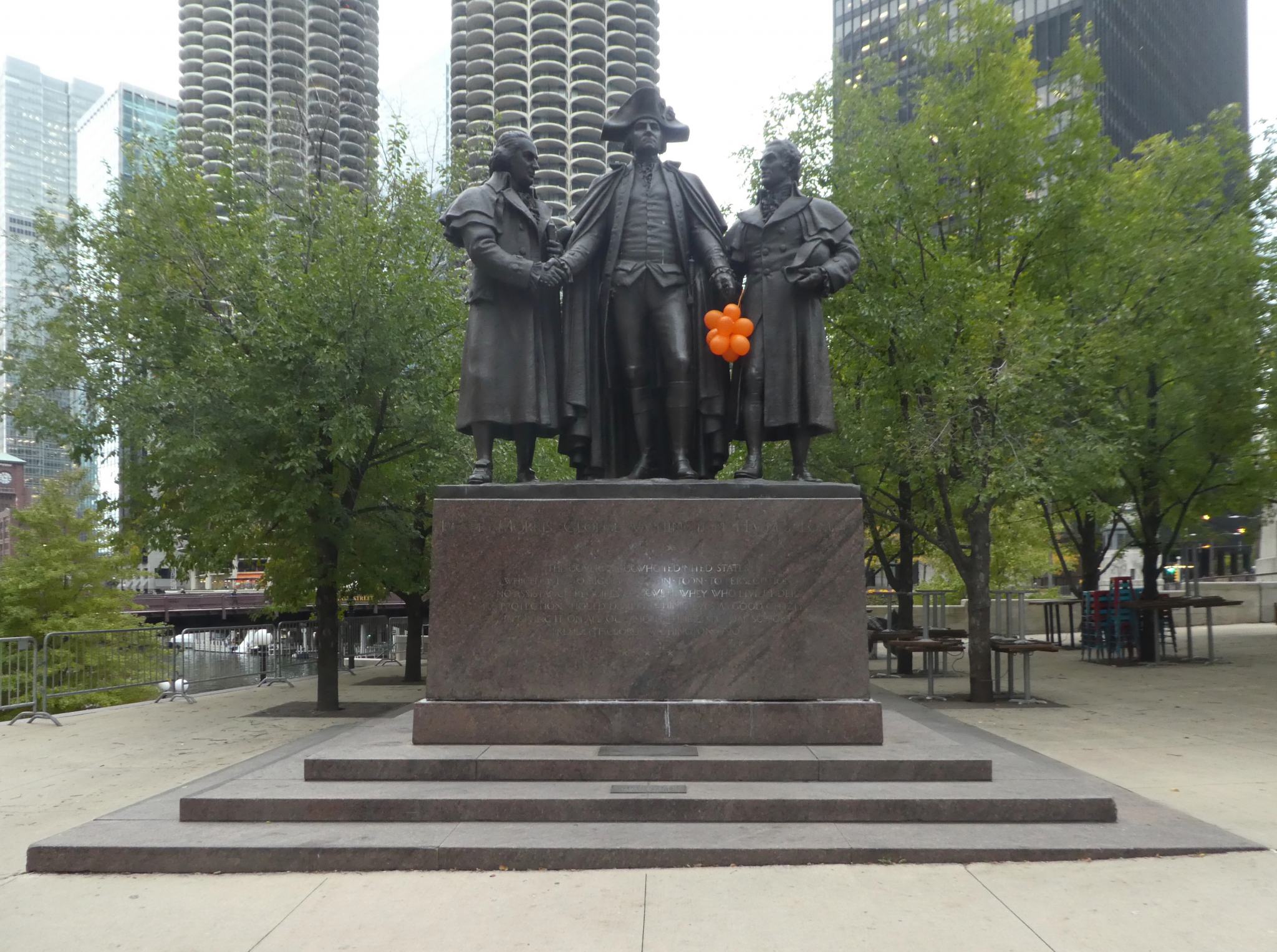 Inscribed on the plinth is one of Washington’s most famous pronouncements:

The government of the United States which gives to bigotry no sanction, to persecution no assistance, requires only that they who live under its protection should demean themselves as good citizens in giving it on all occasions their effectual support.

The statue was erected in the 1930s.  Now, at certain times of the day, a long shadow is cast over it by this building, which is just across the road. 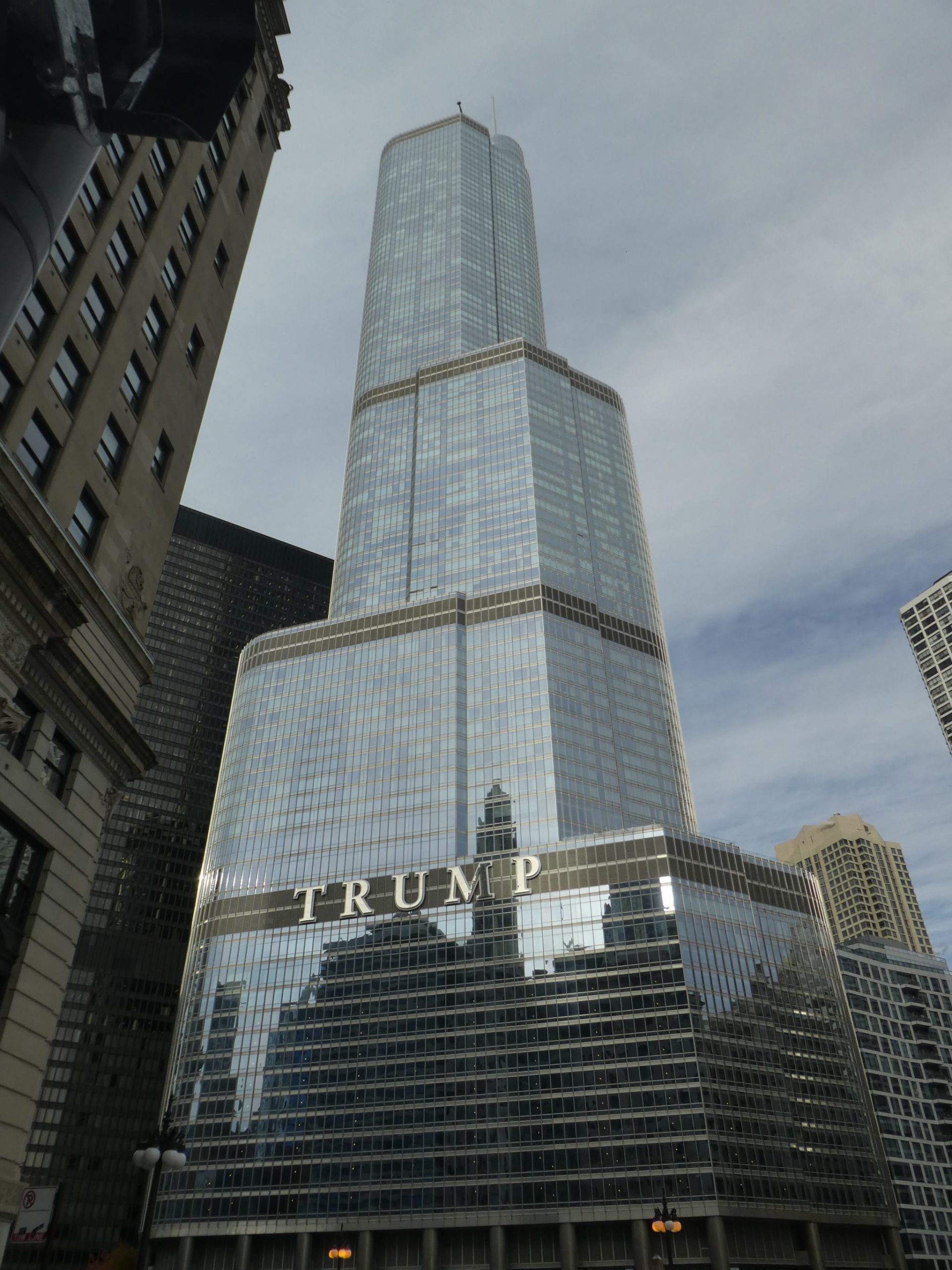 Could there be a more compelling metaphor for America in 2019?

From Chicago we headed down to Indiana to spend a few days with Julie’s brother and his family.  What a difference a weekend makes.  When we returned to Chicago, this is what awaited us. 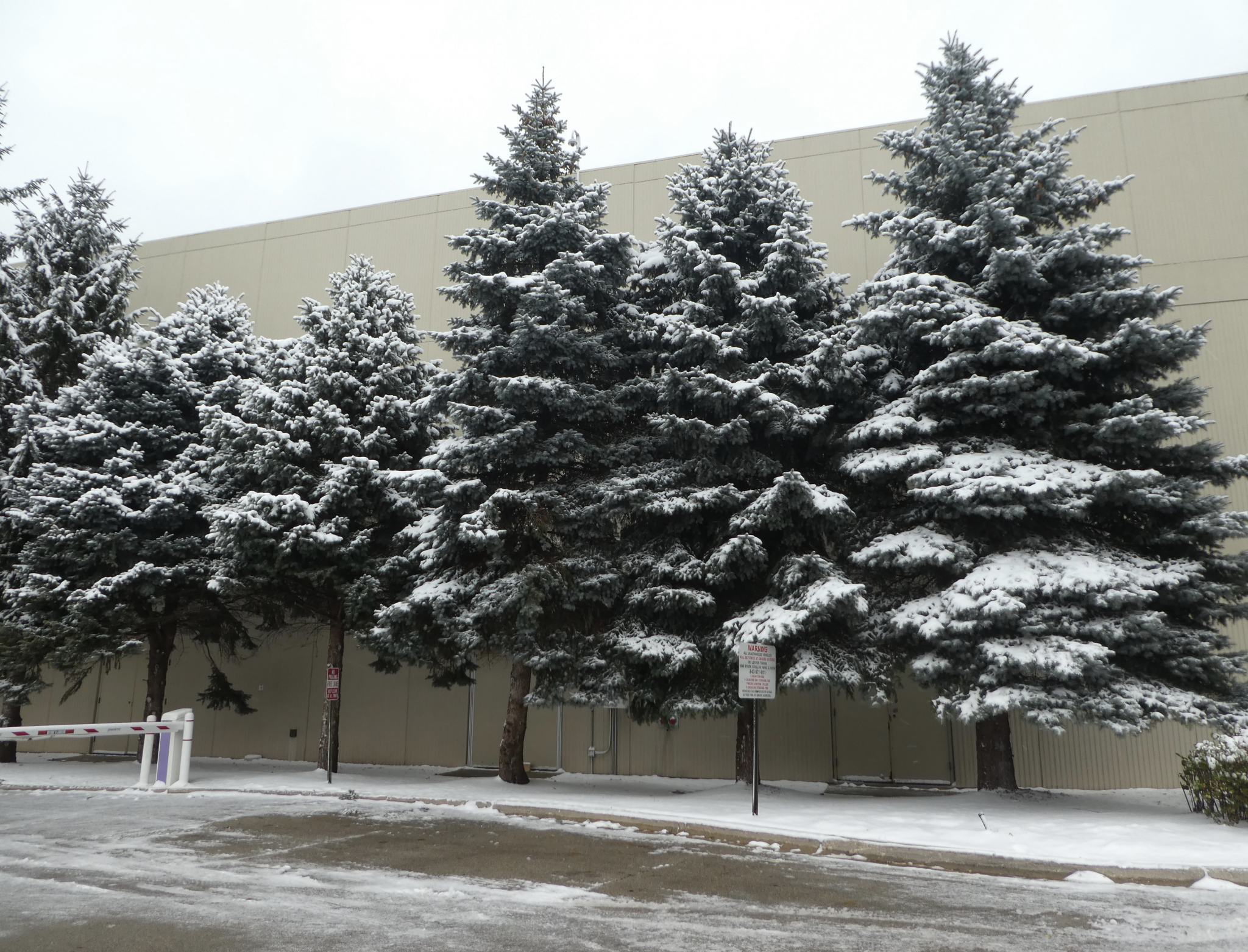 It was time to head to warmer climes.   Next stop – Costa Rica.