Arenal is one of seven active volcanoes in Costa Rica.  Until 2010 it was Costa Rica’s most active, and one of the ten most active in the world.

It’s the classic, perfect, volcanic cone shape, but unfortunately it’s often shrouded in cloud.  We were lucky enough to see it in its full reveal when we arrived, but didn’t take a picture, and over the next three days, the best we got was this. 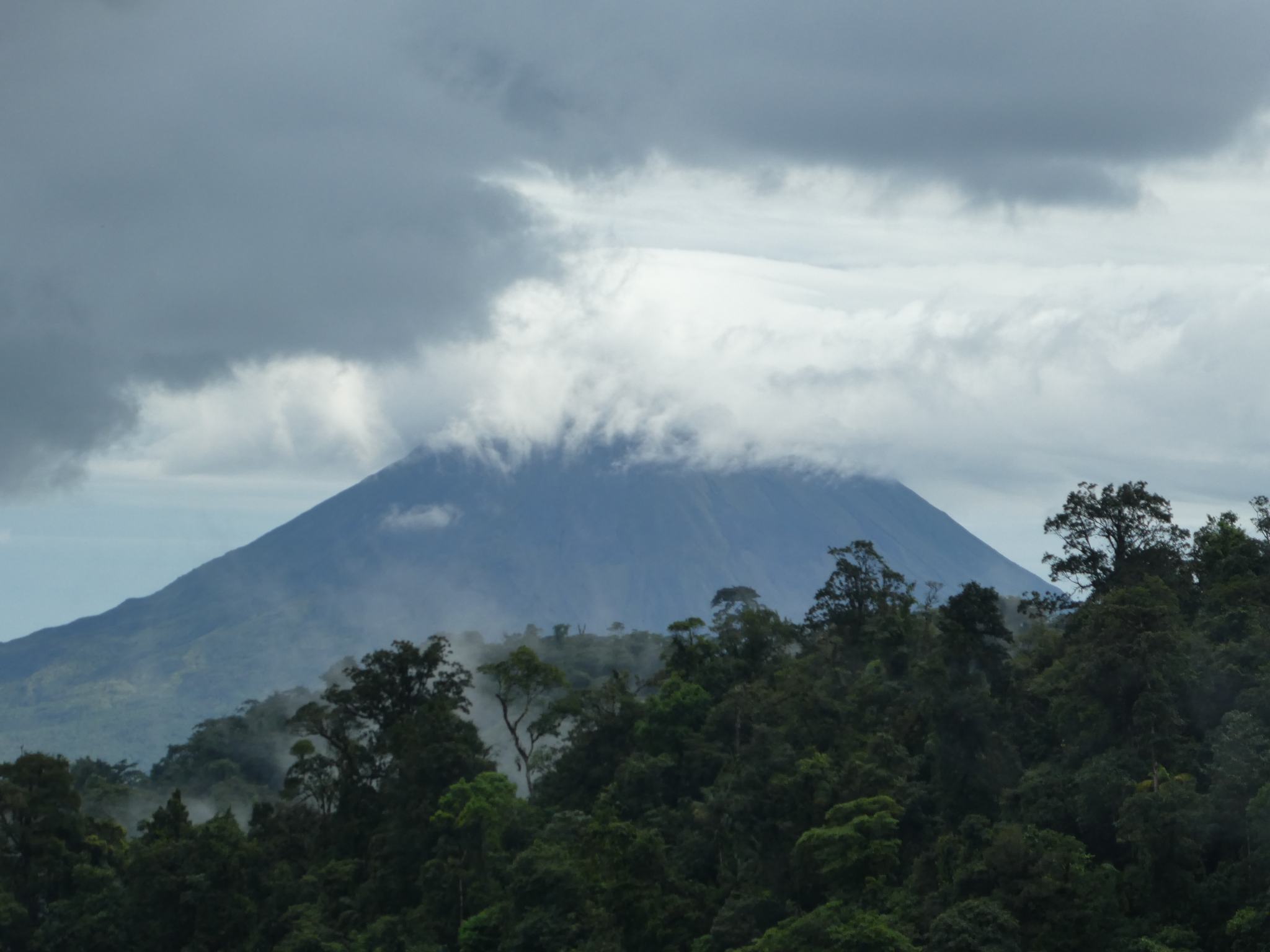 After an indeterminate period of inactivity, Arenal erupted unexpectedly and spectacularly in 1968, covering 15 square kilometres in lava.  Rocks weighing several tonnes were flung more than a kilometre away.  Three more craters were formed and the volcano remained active, with multiple eruptions in the 1970s, 80s and 90s.

The 1968 eruption buried three towns and killed 87 people.  The town of La Fortuna was spared.  There’s a popular myth that the town, previously named El Borio was renamed La Fortuna, meaning ‘the fortunate’ because it was spared.  Actually it had been renamed before the eruption and means ‘the fortune’, referring to the rich volcanic soils which support great agriculture.

Ironically, over the decades of the volcano’s continued activity, La Fortuna also grew relatively wealthy from tourists coming to see the near-continuous pyrotechnic displays of lava spitting from the cone, a spectacular sight at night.

The volcano has been dormant since 2010, and La Fortuna’s fortunes have waned, but it’s still a great centre for nature based activities, including hiking, birding and rafting.

As our guide advised with a certain malicious glee, there are two seasons here – the rainy season and the less rainy season.  And although we are technically in the ‘transition’ period, it was very, very, very wet.

In coming to Costa Rica, one of our priorities was the suspension bridges through the canopy, and we walked them here.  It was beautiful. 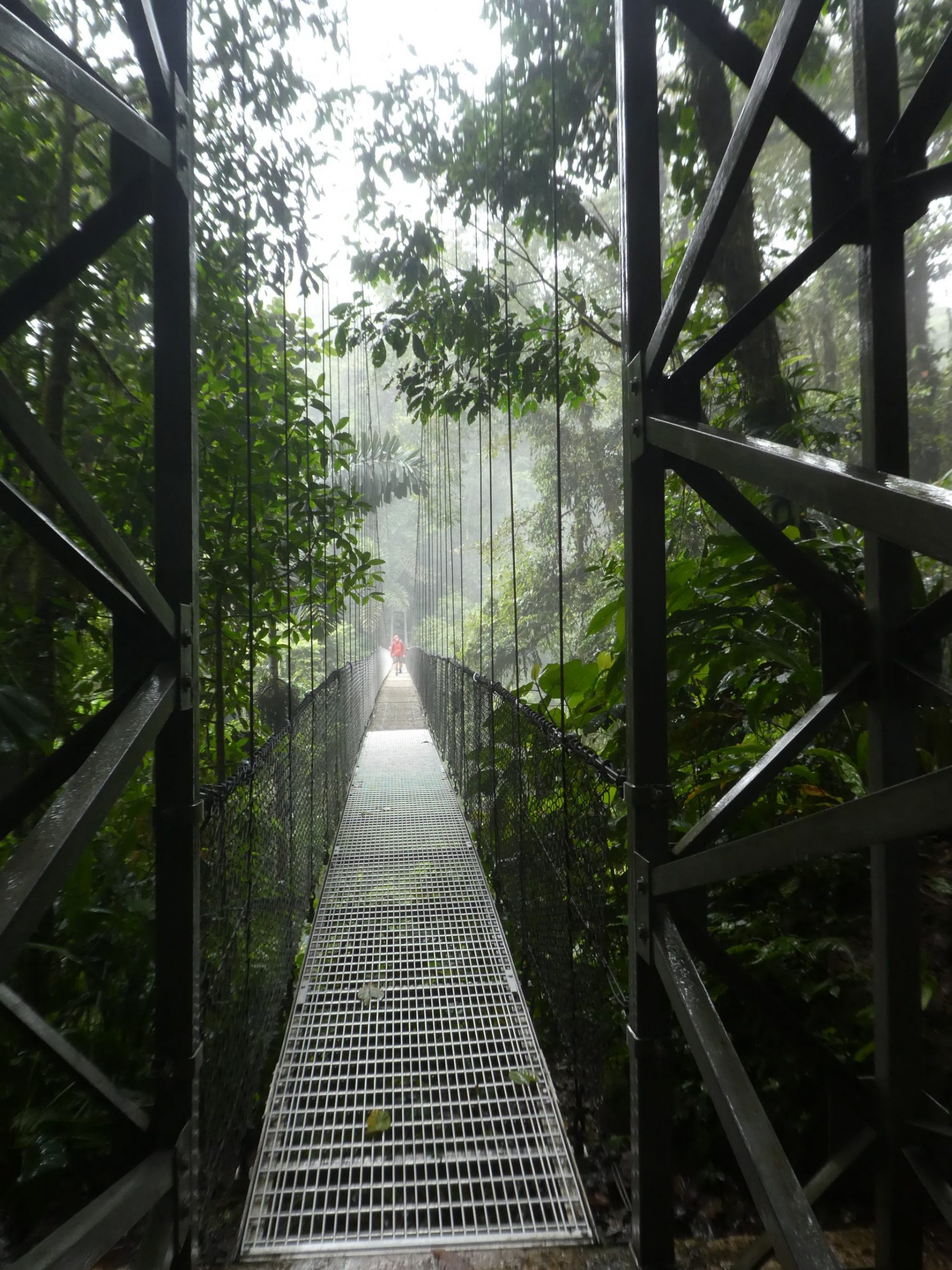 We also saw some interesting wildlife including coatis (more on them in a later post) and these guys – the peccary, otherwise known as a skunk pig. 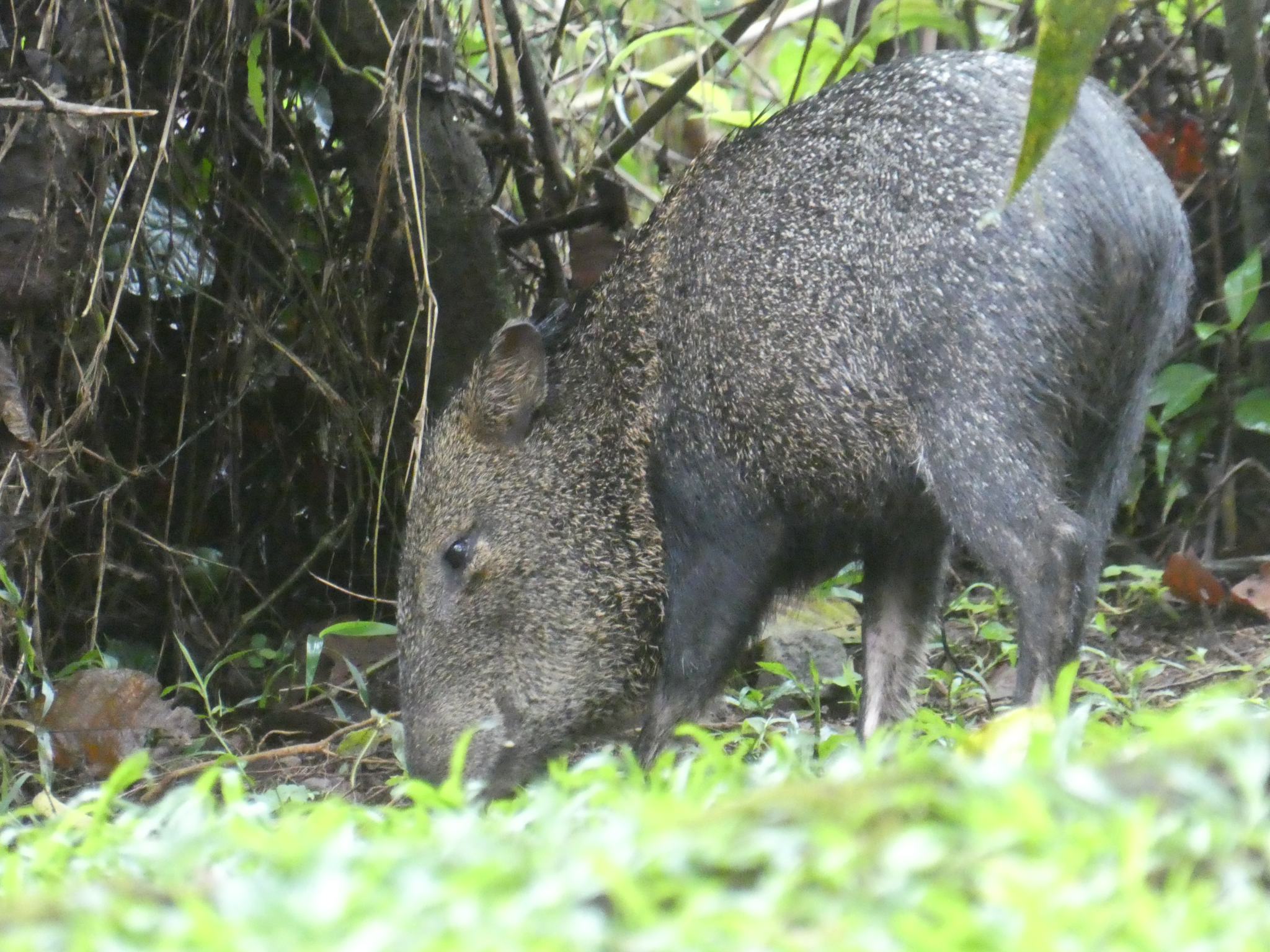 Also the rufous tailed jacamar, which is not the national bird but seems to be the region’s most beloved. 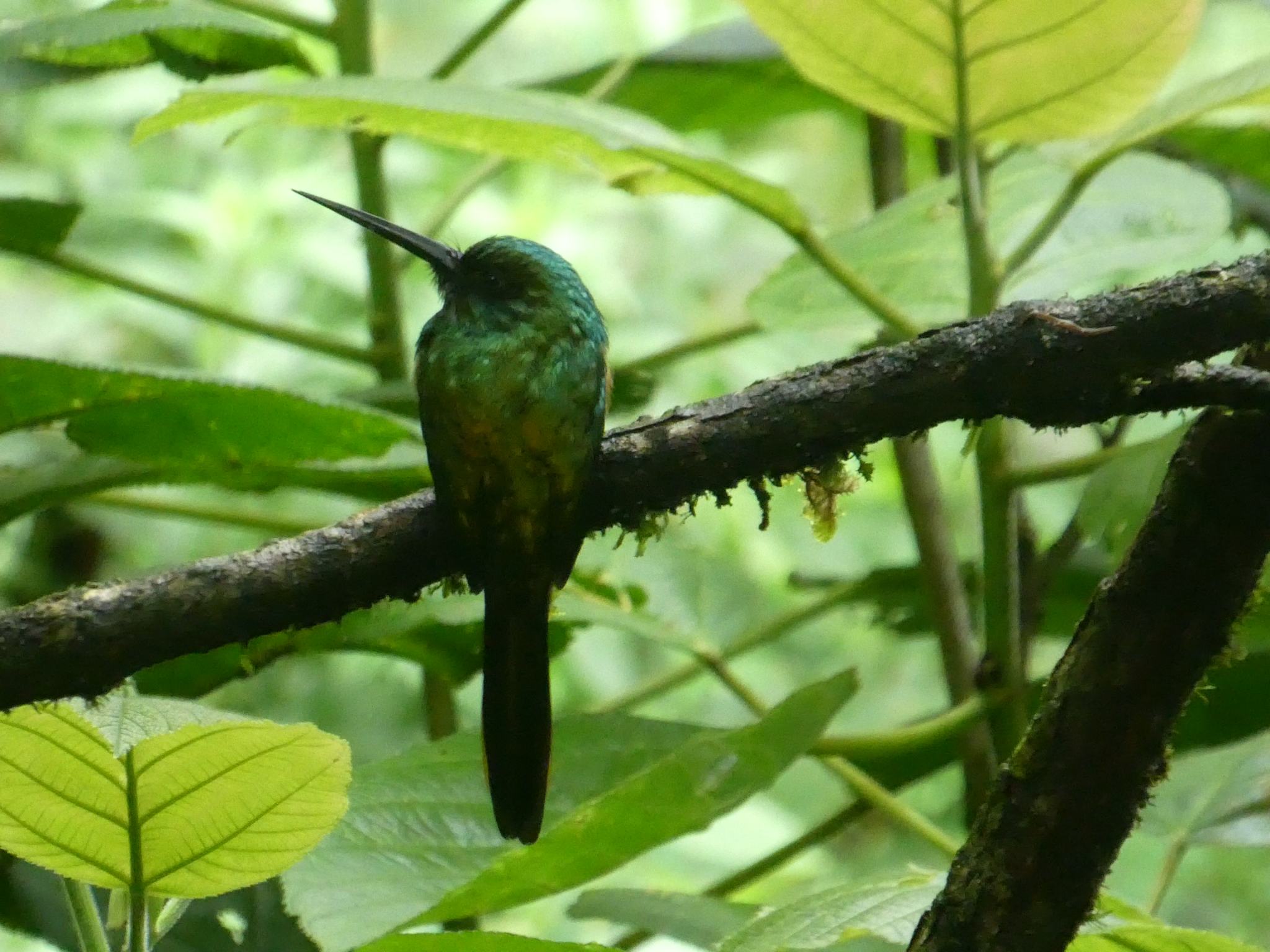 The guide did his best but the rain was torrential.  No monkeys, no sloths.  We had to concede defeat on this one.

This beautiful nature trail is just 15 minutes walk out of La Fortuna town.  It’s not even really out of the urban area, yet it’s got some fantastic wildlife.  The land is privately owned, and visits are by guided tour only, which is necessary anyway since animals in the rainforest have evolved so well to camouflage themselves, you need an expert spotter to get the best experience.

It’s small – about 2 kms of walking track, but easily takes a couple of hours, moving slowly to see what’s about.

The trail is promoted as a great place to see sloths, and we did see some.  Unfortunately this time of year is cold and wet, so the sloths tend to hunker down.  They don’t move about much, and seem to have a knack for clinging to trees with their backs to potential viewers, so they look a bit like hairy balls rather than the cute creatures you see in nature docos. 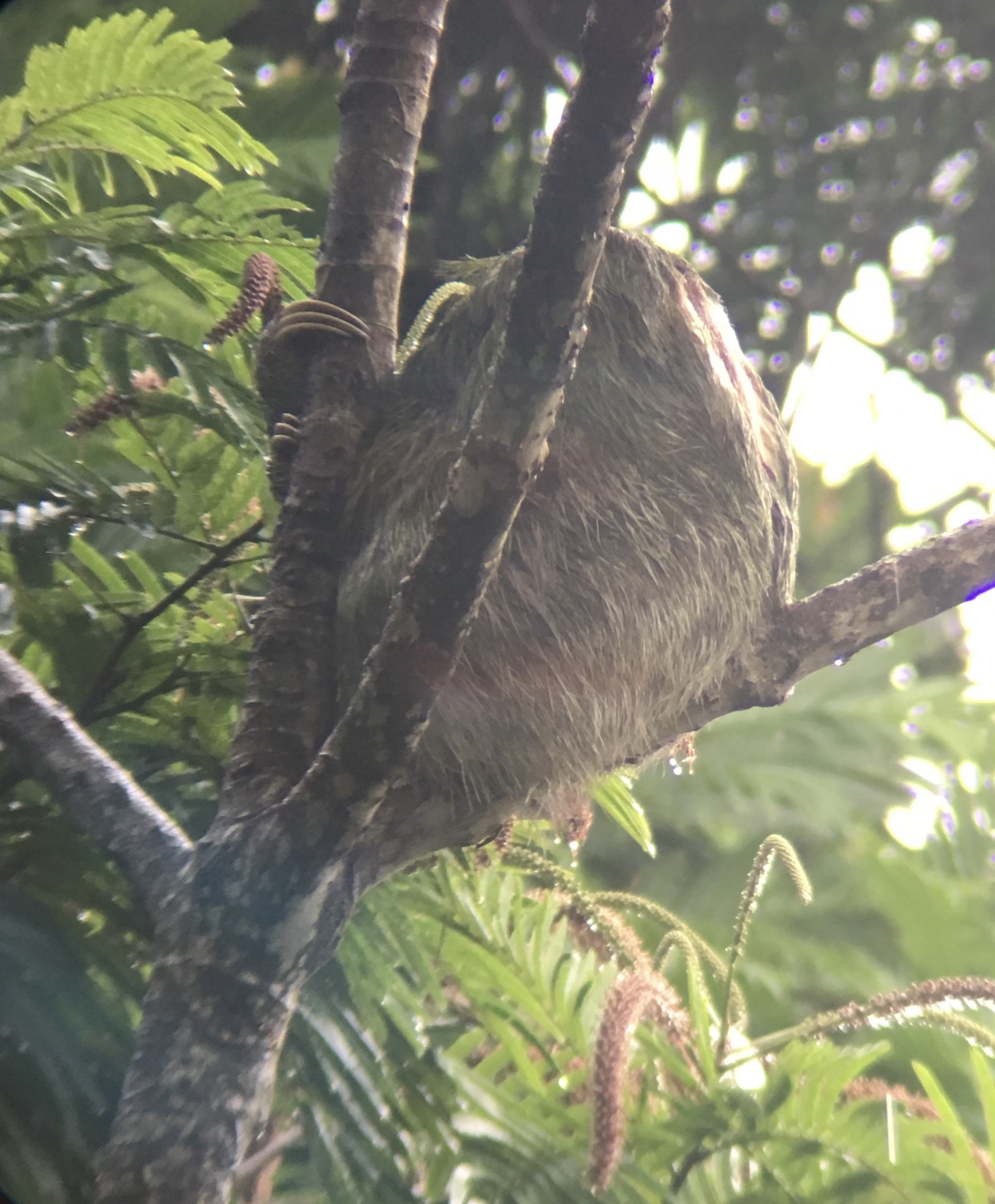 But as if to compensate for the sleepy sloths, we did see some spectacular birds.

The red legged honeycreeper.  No difficulty differentiating male and female with this one.  Blue for boys, green for girls, but both have the distinctive red legs. 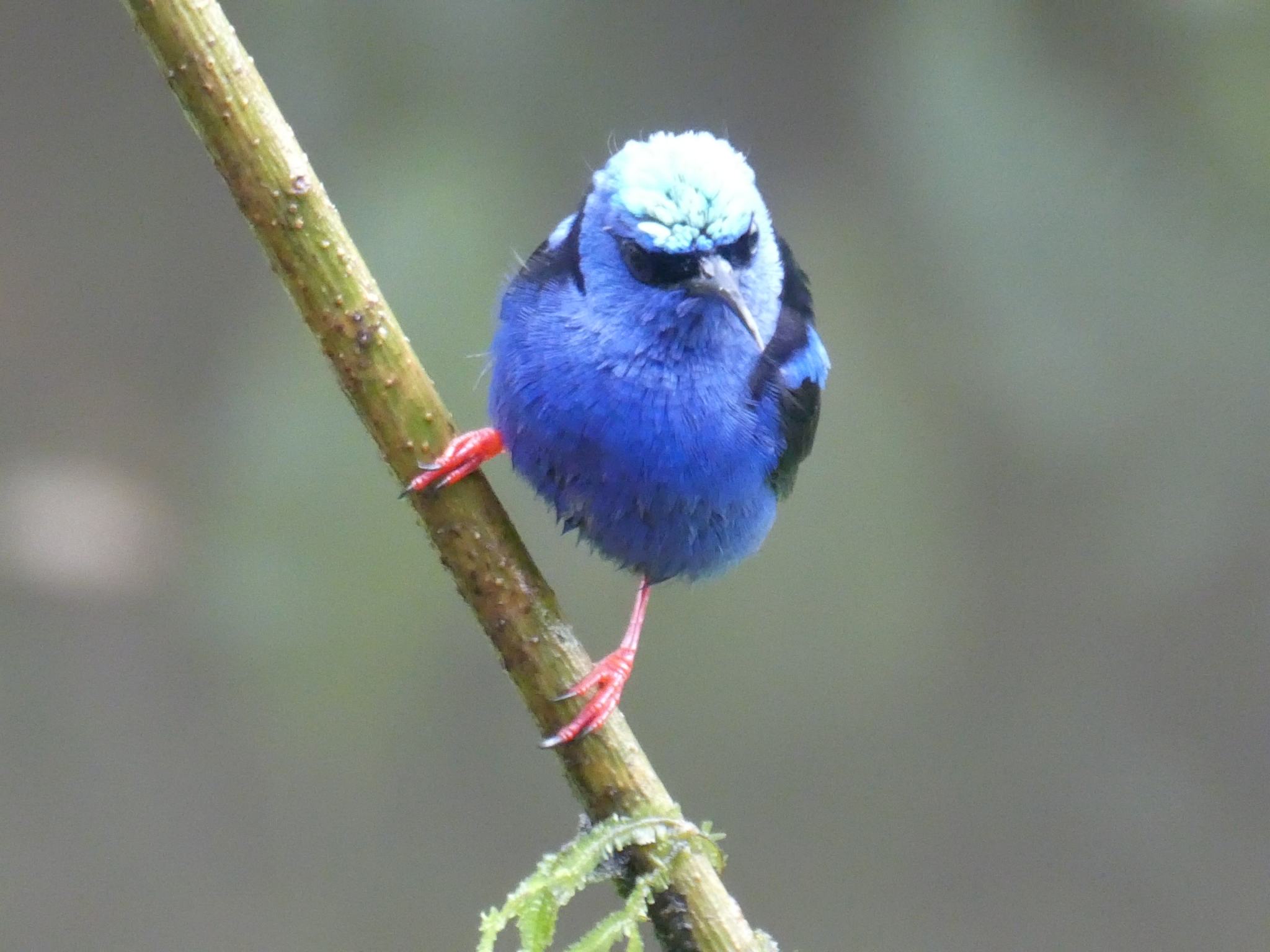 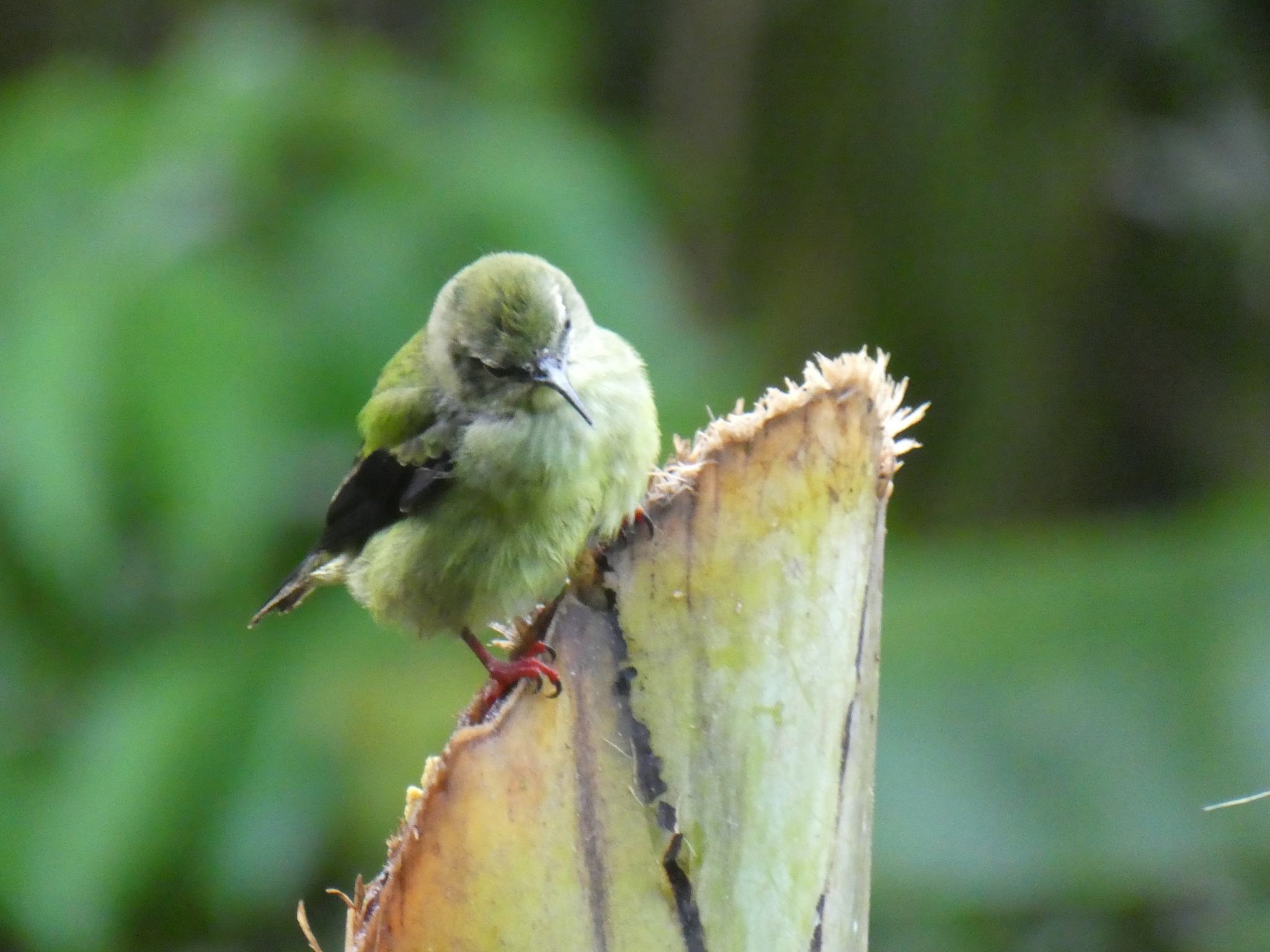 Toucans are such comical looking birds.  This one is the imaginatively named yellow throated toucan. 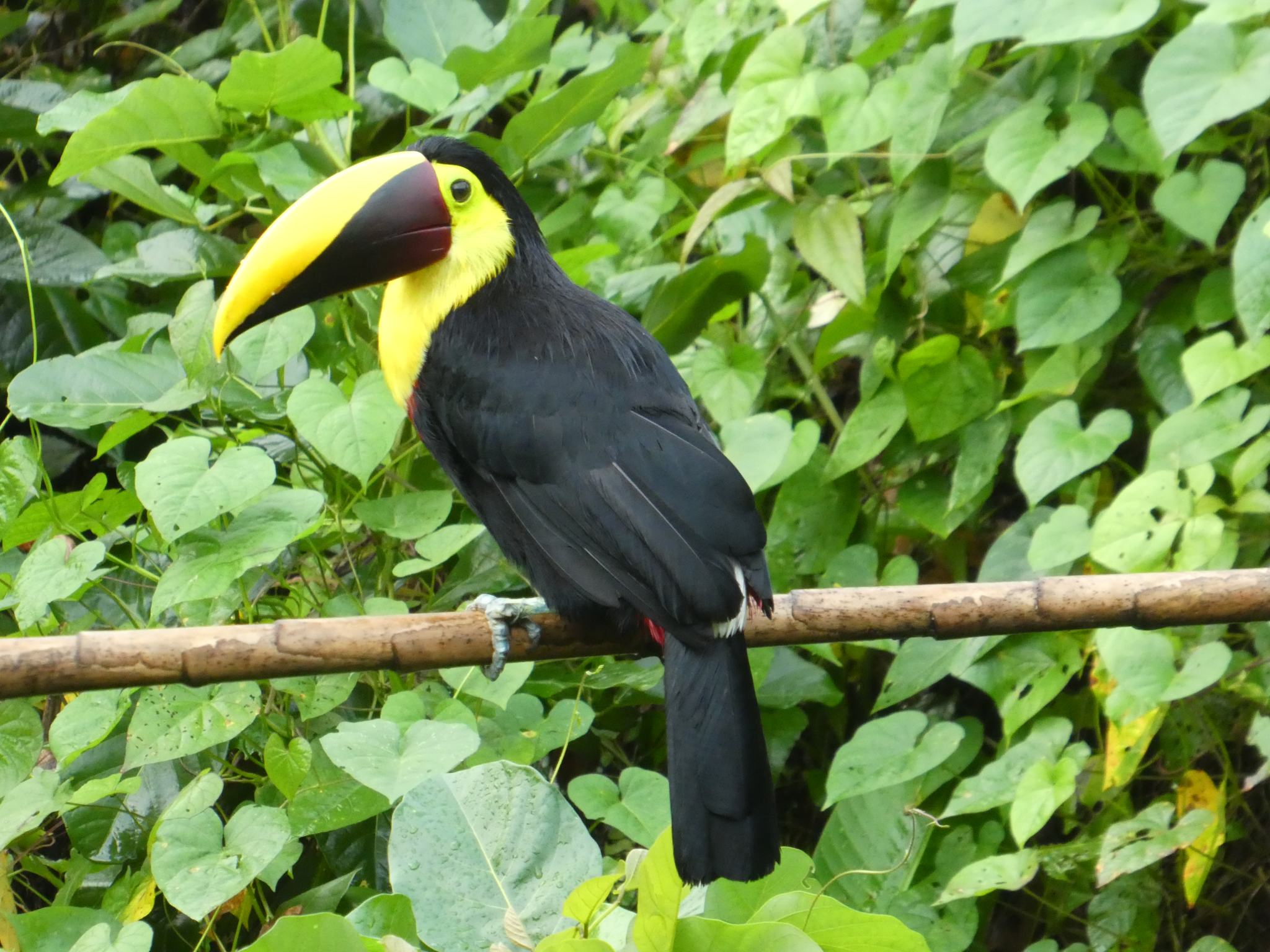 This lovely one is the blue-grey tanager. 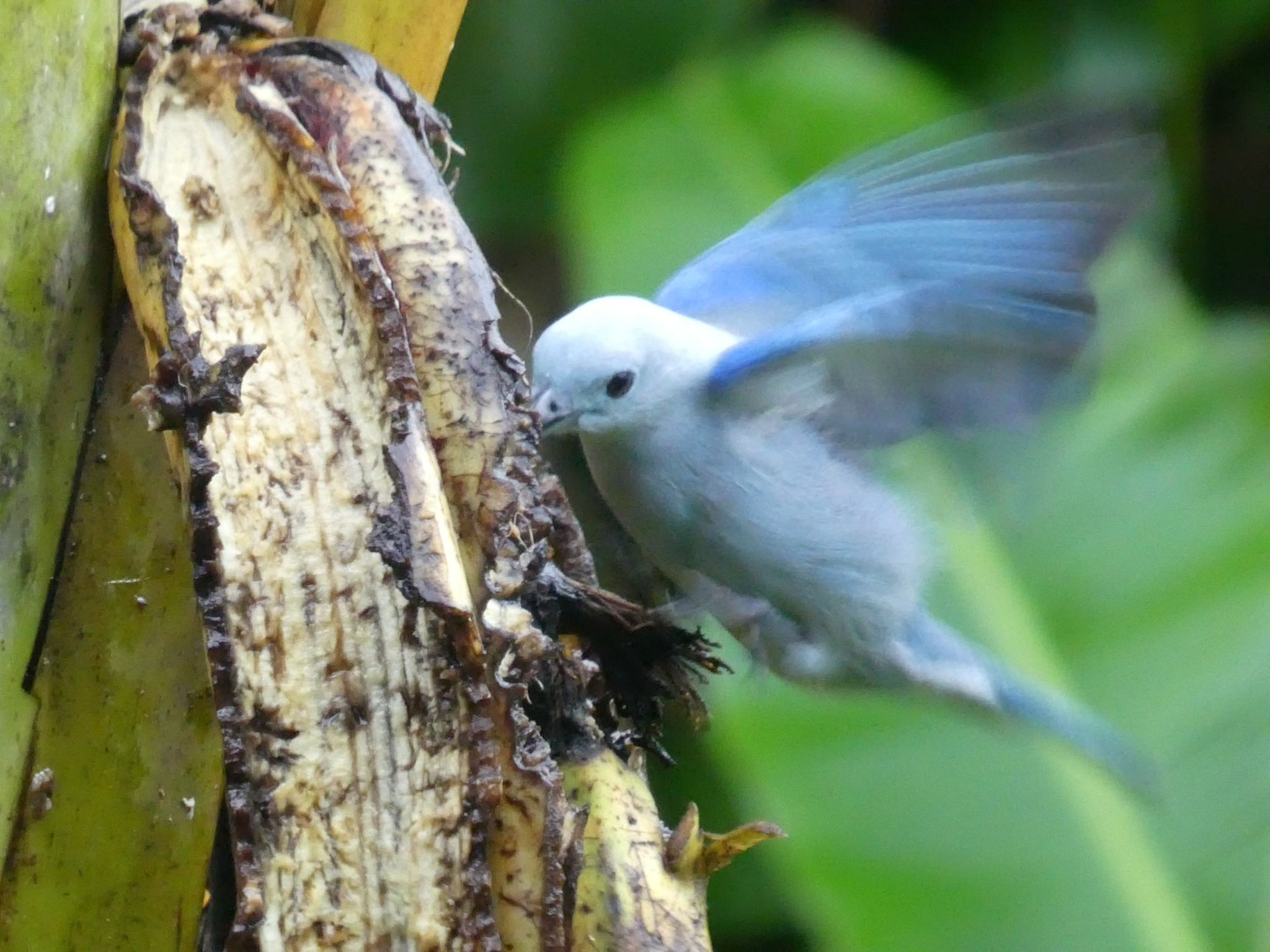 A parakeet – not sure what kind. 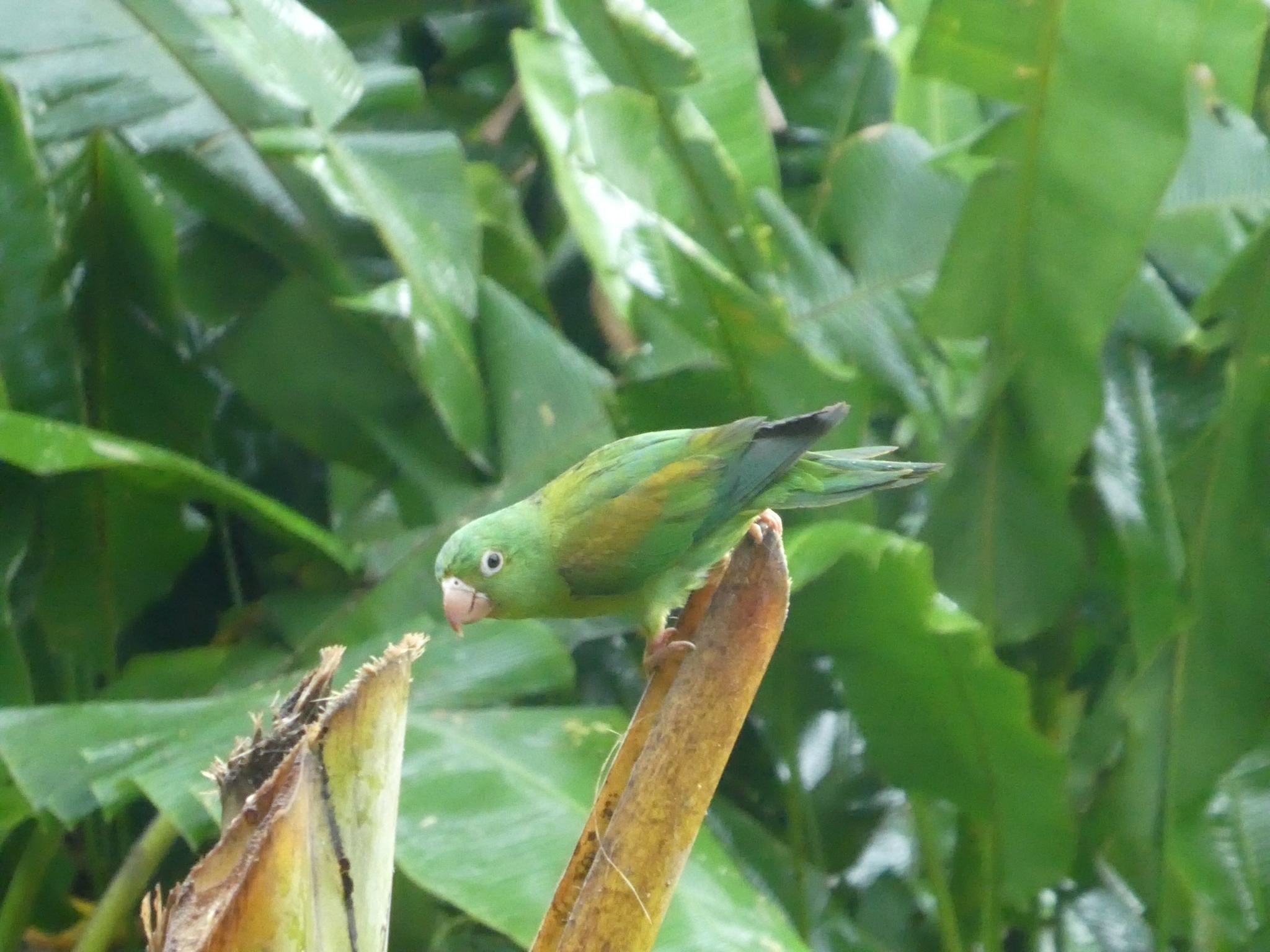 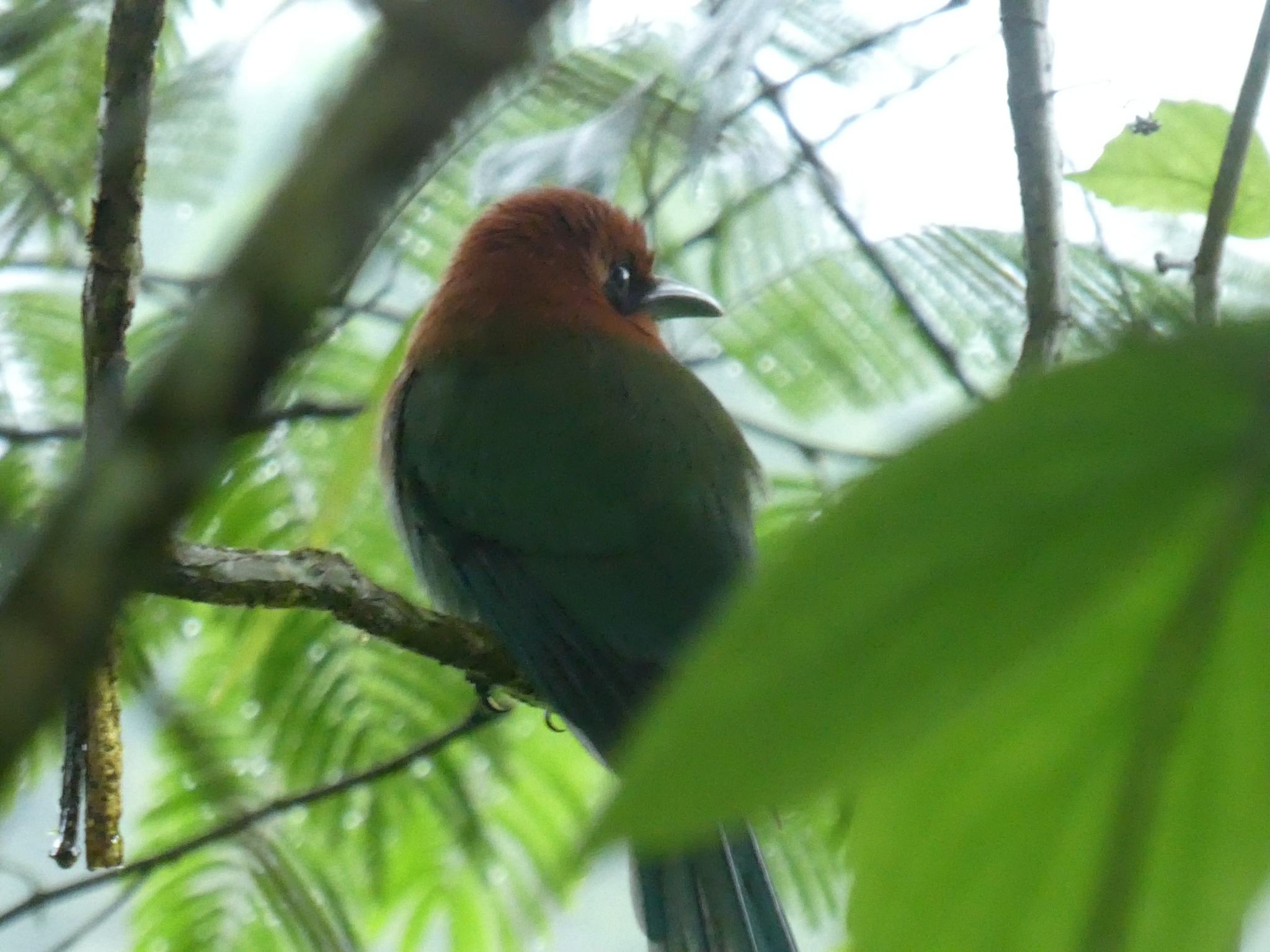 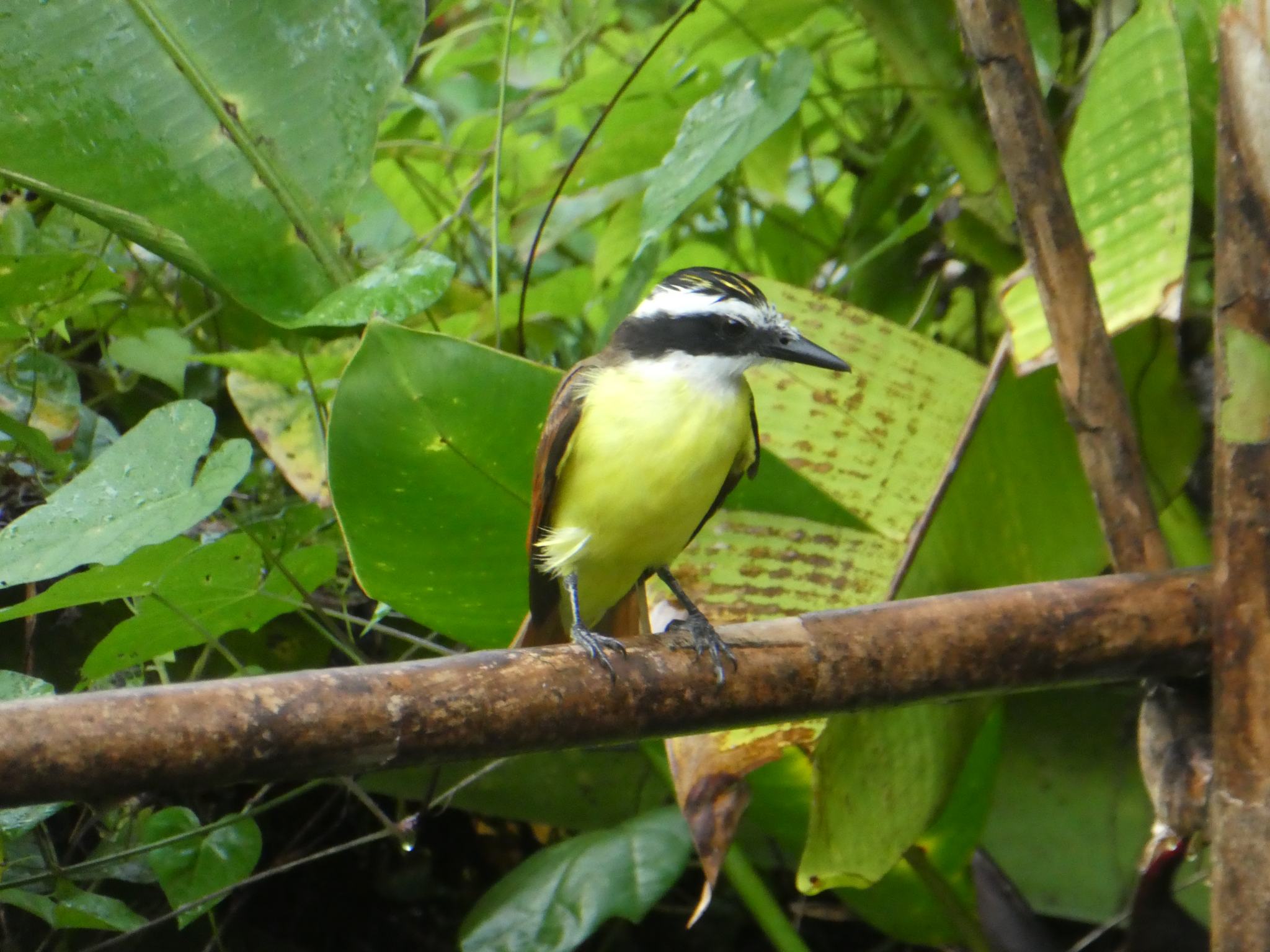 The volcano may be dormant for now, but the geothermal activity produces plenty of hot springs.  There’s a couple of places where you can loll about in natural springs, but generally it’s where the springs mingle with a river and the water isn’t that warm.   The better alternative is a hot springs facility, and there’s at least half a dozen to choose from.

Julie rather likes hot springs.  We’ve been to a few hot springs over the years, and it’s fair to say they range from fantastic (onsens in the mountains in Japan) to uninspiring (concrete swimming pool in Madagascar) to rather appalling (soapy rubbish-strewn springs in Indonesia).

Being the patient soul that he is, John has borne it all with a minimum of complaint, but really, the mere mention of hot springs is enough to make his eyes glaze over.

Paradise Hot Springs was different.  This one got his solid approval.  Who knew that all he really needed was an underwater banana lounge and a swim up bar that makes a pretty mean margarita! 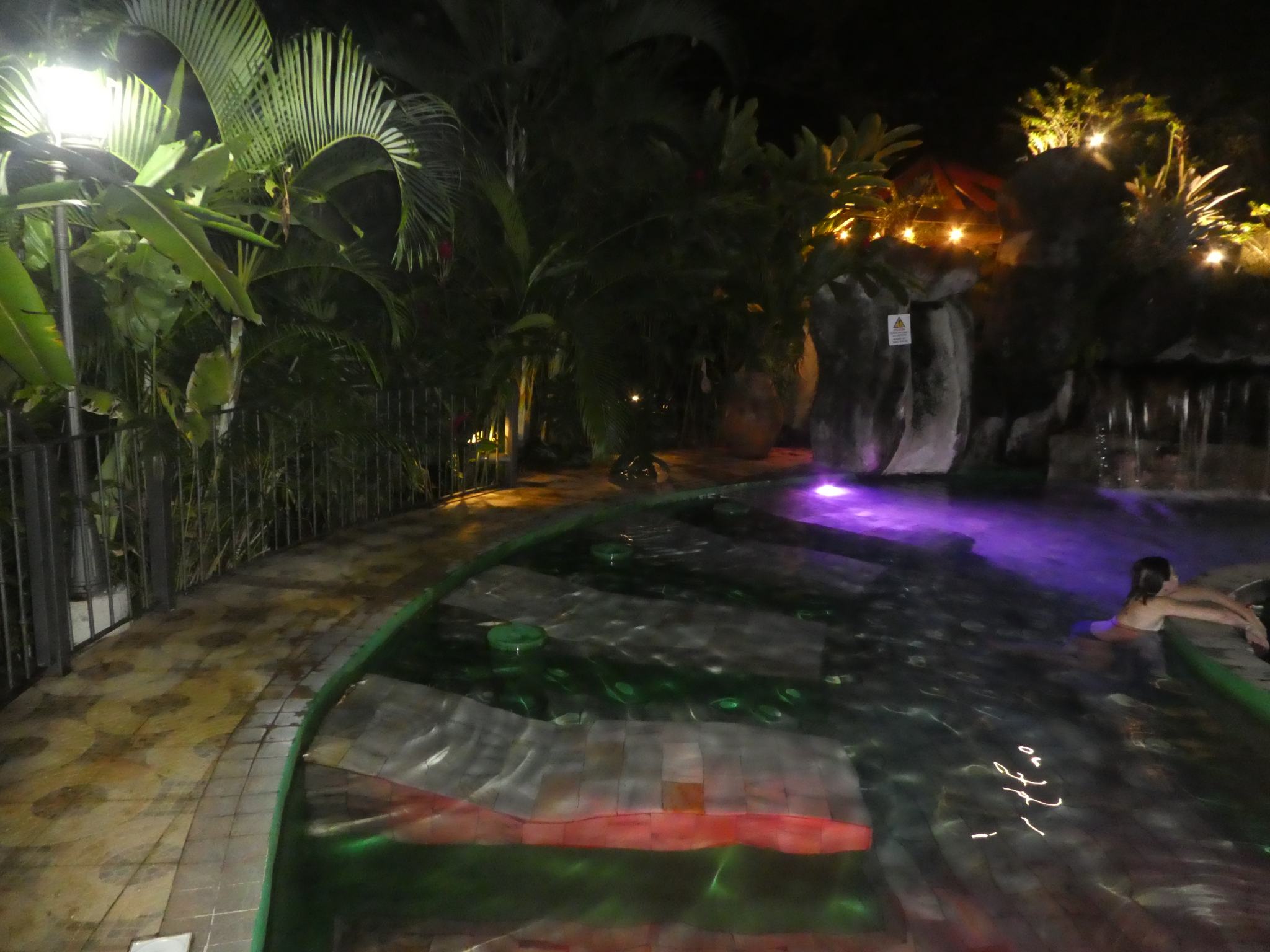 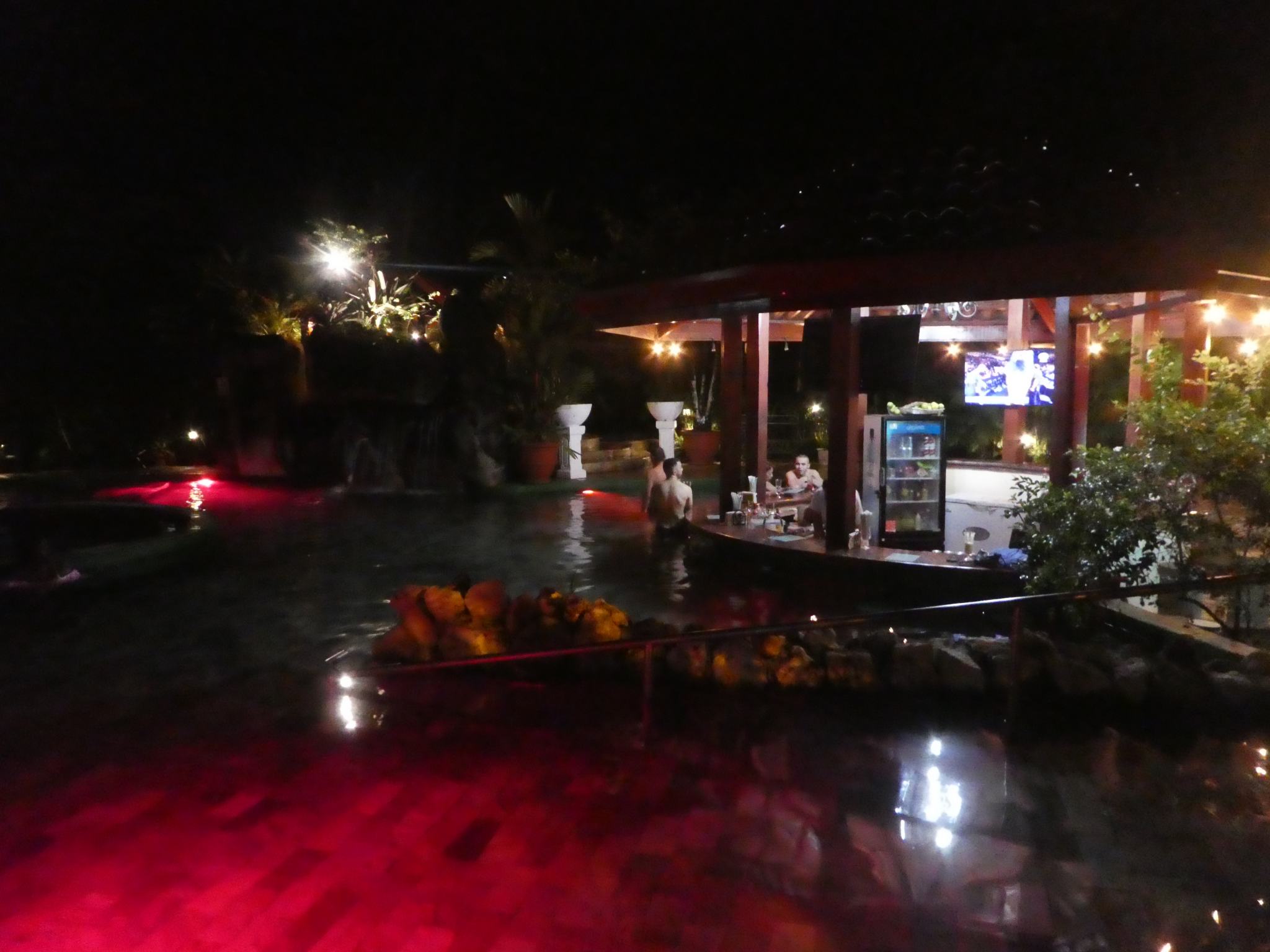 About two hours drive from La Fortuna is the Tenorio National Park.  The big draw card here is the Rio Celeste (“Sky-Blue River”) and its waterfall.  At the confluence of two colourless waterways – the Buenavista River and Quebrada Creek – the water ‘magically’ turns blue.

There are several potential explanations for the phenomenon.  The scientific one is that the pH change at the mixing point increases the particle size of a particular mineral in the Buenavista River. The mineral, aluminosilicate remains in suspension in the water and the specific size of the crystals means only the bluish tones of white light are dispersed.  This makes the water look blue.

We prefer the indigenous peoples’ explanation, which is that after their god painted the sky, he washed his brush in the river, causing the blue colour.

Either way, it’s undeniable that the colour change in the water is dramatic. 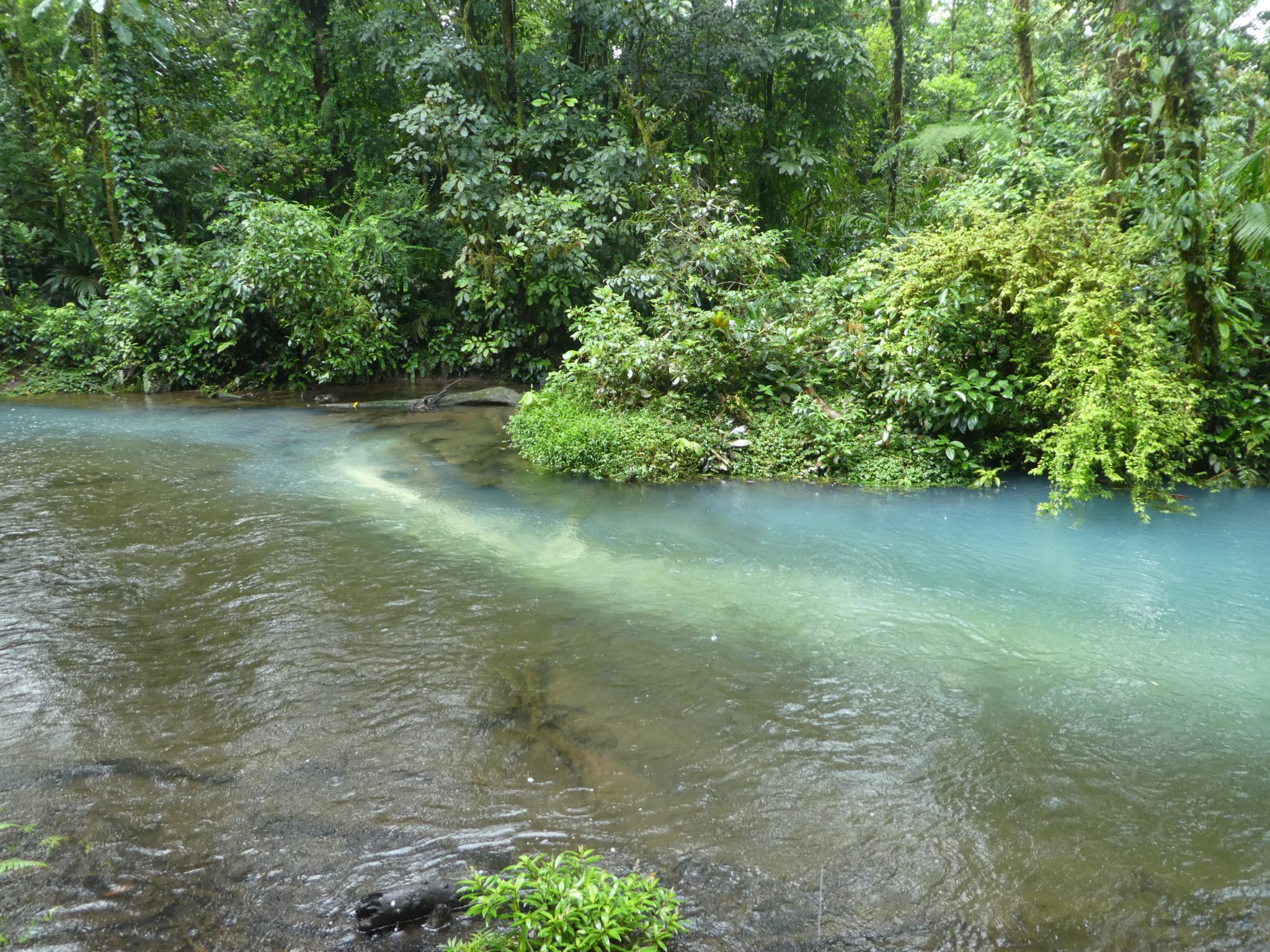 And downstream it creates a beautiful blue waterfall. 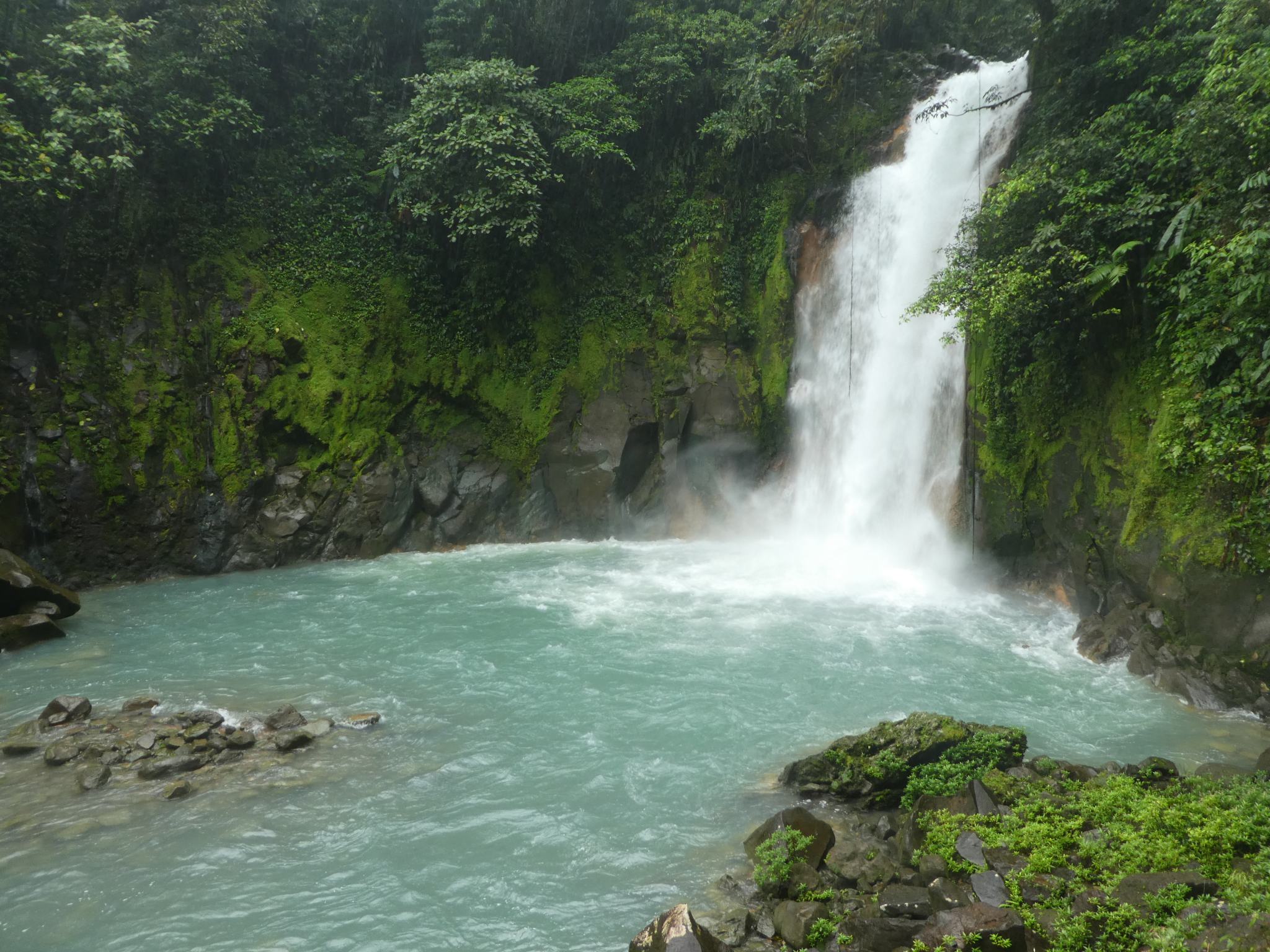 The hike to the waterfall is muddy but along the way we spotted a few interesting critters.

First up, the eyelash viper. 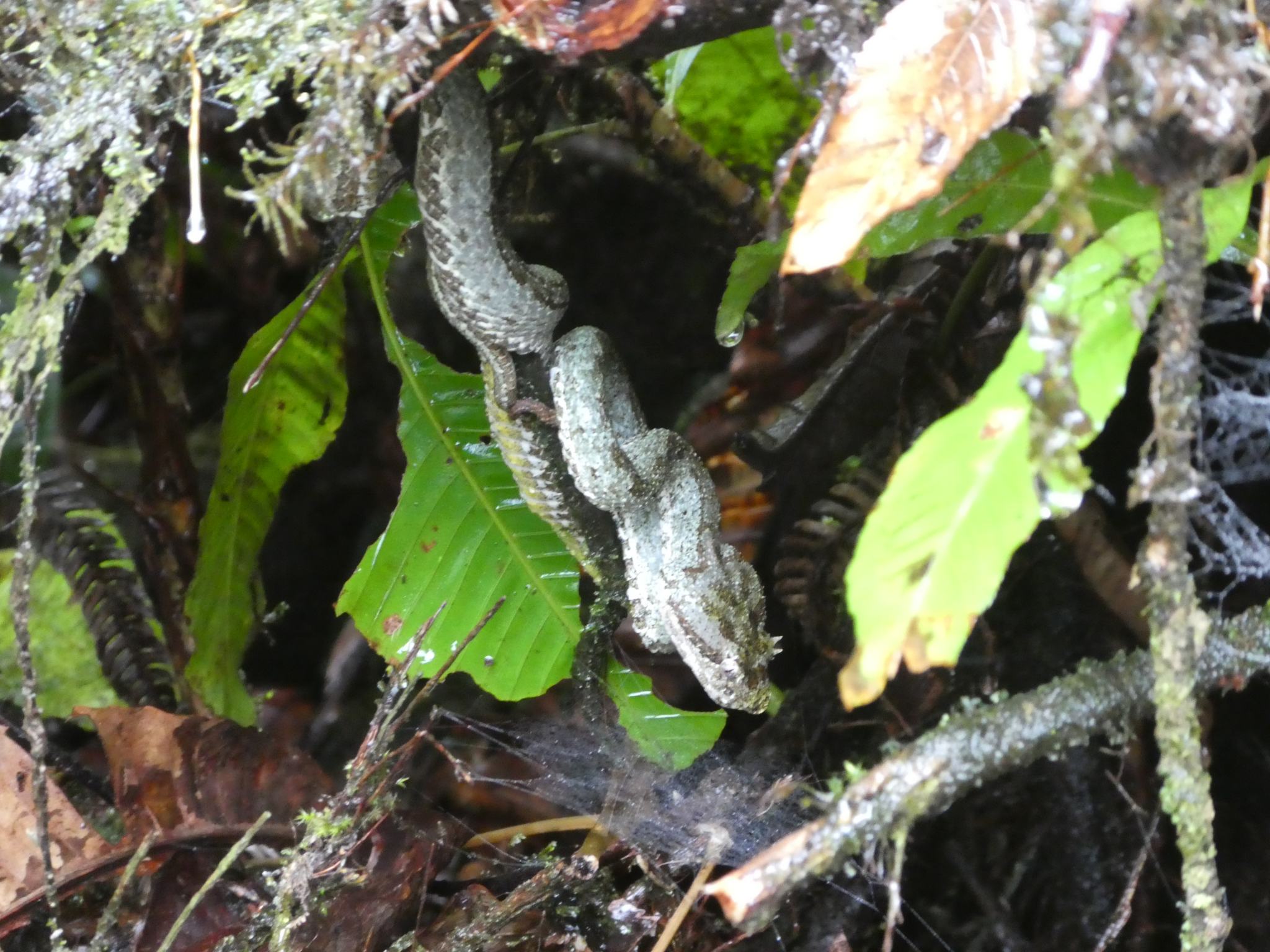 And then the green vine snake. 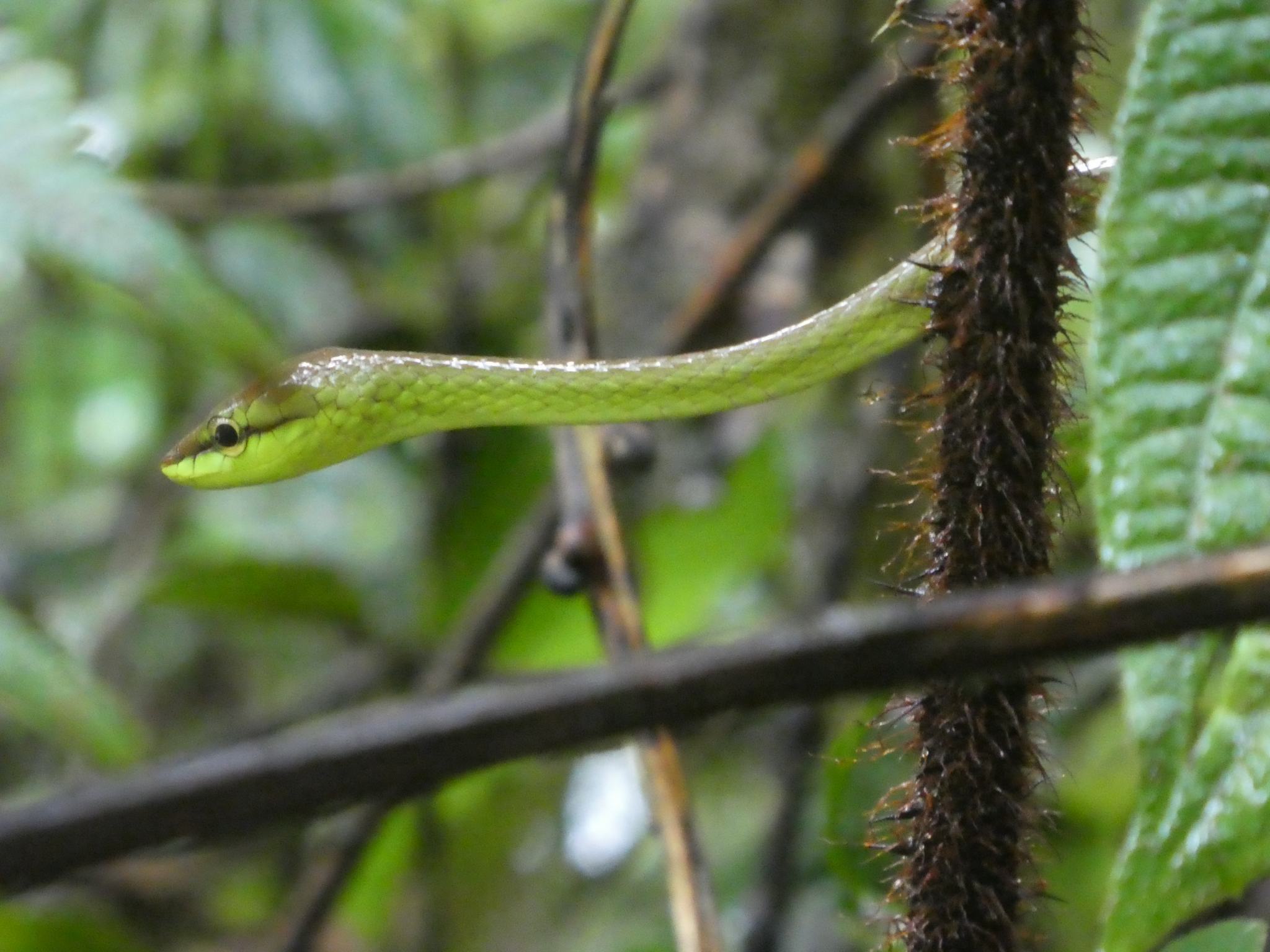 The golden orb spider is named not for the golden flecks on its body but for its web, which looks golden in certain light.  It is said to be the strongest web of any spider – five times stronger than steel and more flexible than nylon.  The web is being studied by the US military, civil engineers, biomedical scientists and clothing manufacturers looking to reproduce it artificially. 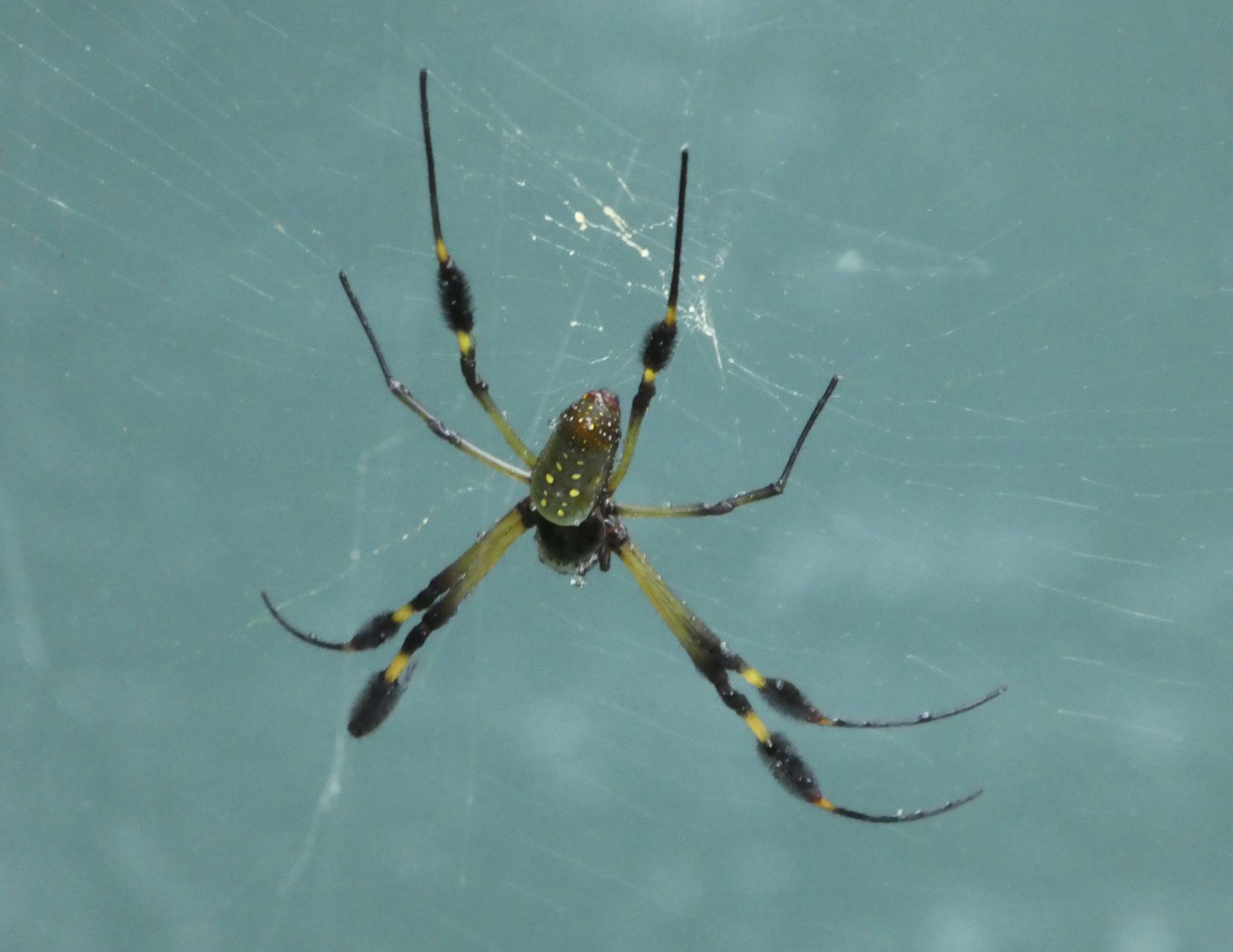 And some cool orchids. 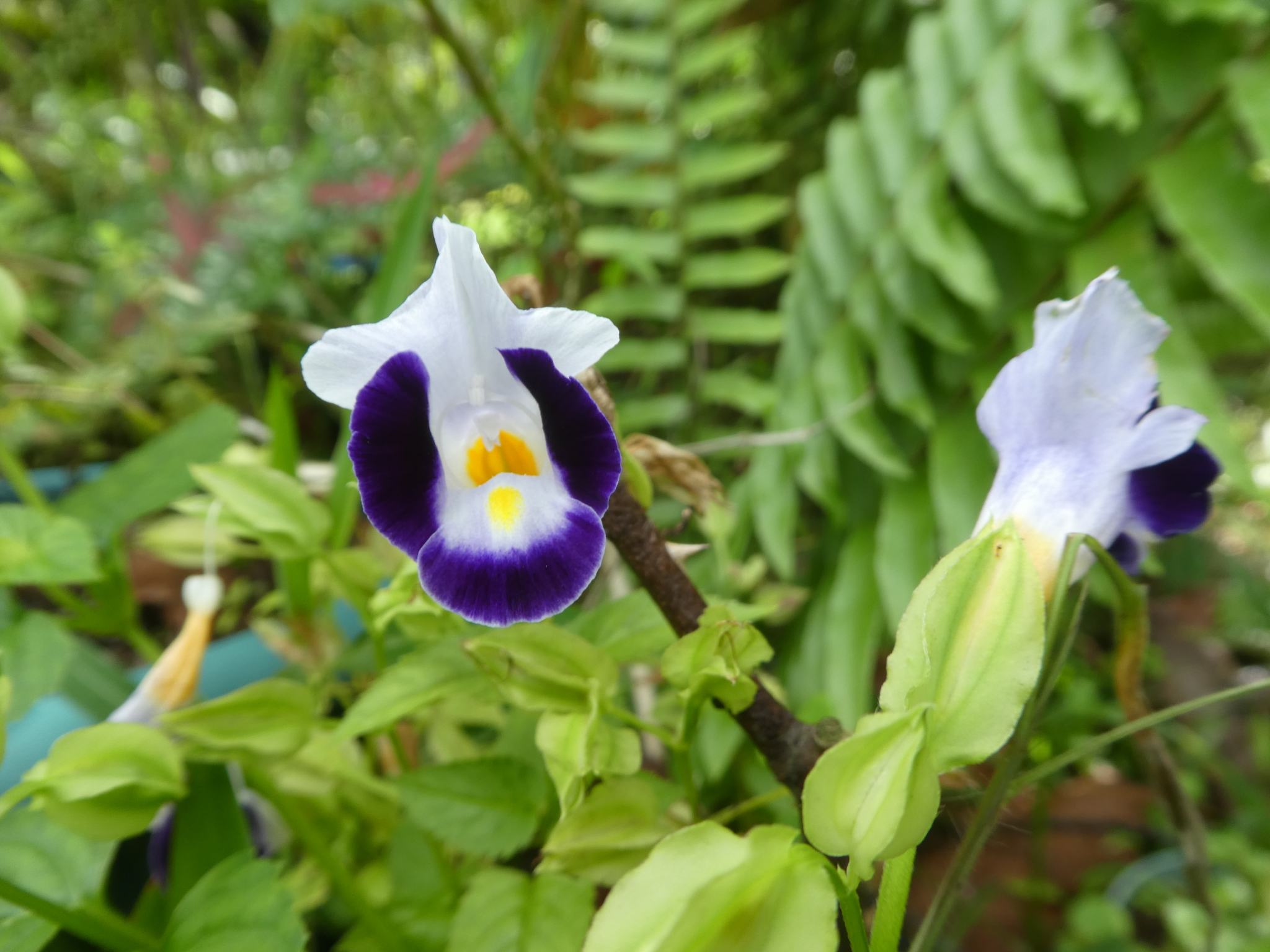 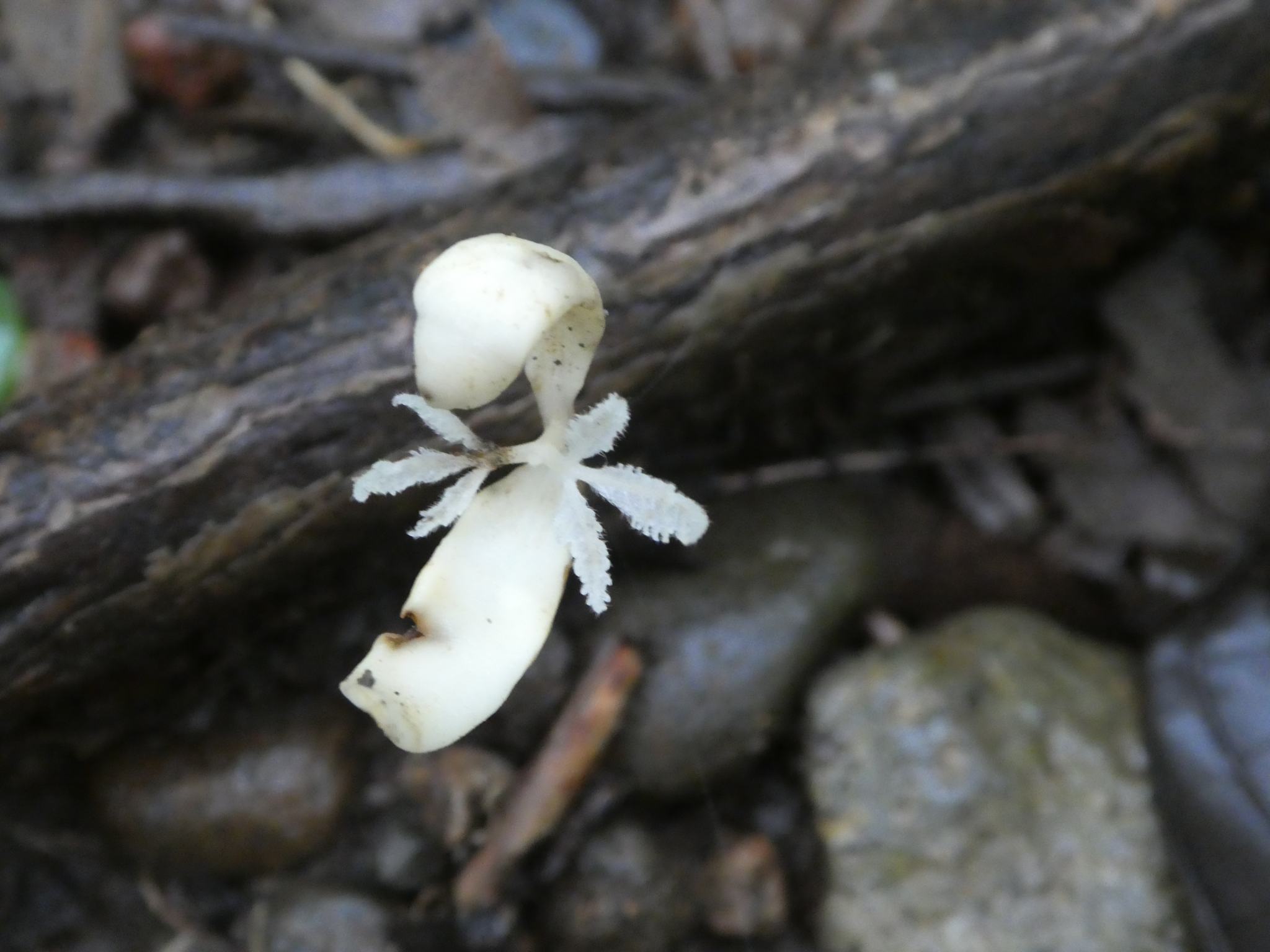 Actually, this was more a float than a rafting trip.

Being the only fools going rafting in the wet, it was just the two of us and a guide.  But we were lucky and had no rain.  Splendid!

The river was languid and the guide did the paddling. 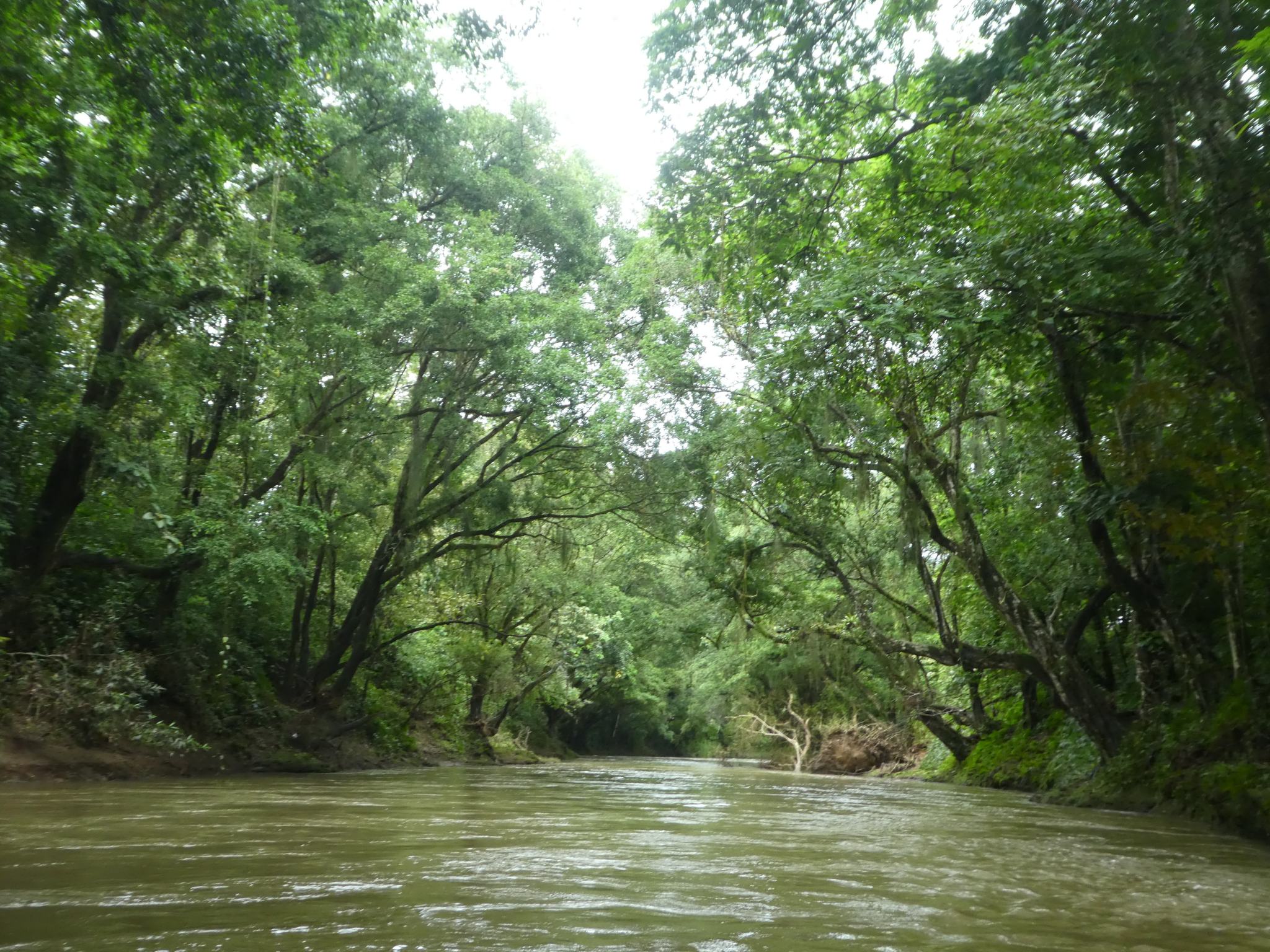 Over a leisurely eight kilometres or so, we saw lots of interesting things.

The basilisk has strong back legs and runs so fast that it appears to run on the water along the river banks, hence it’s commonly known as the Jesus Christ lizard. 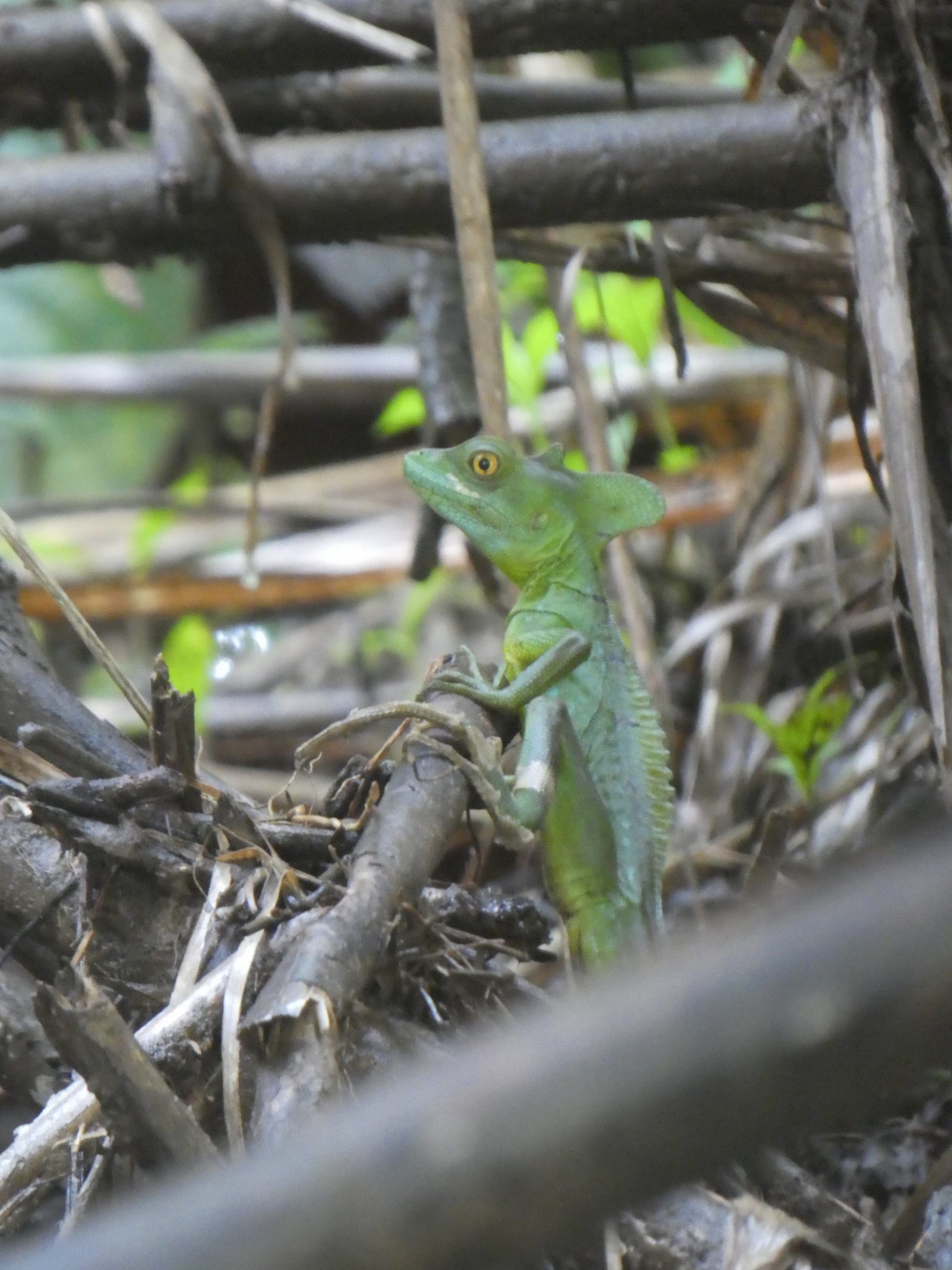 This porcupine was sleeping in a hollow in a tree. 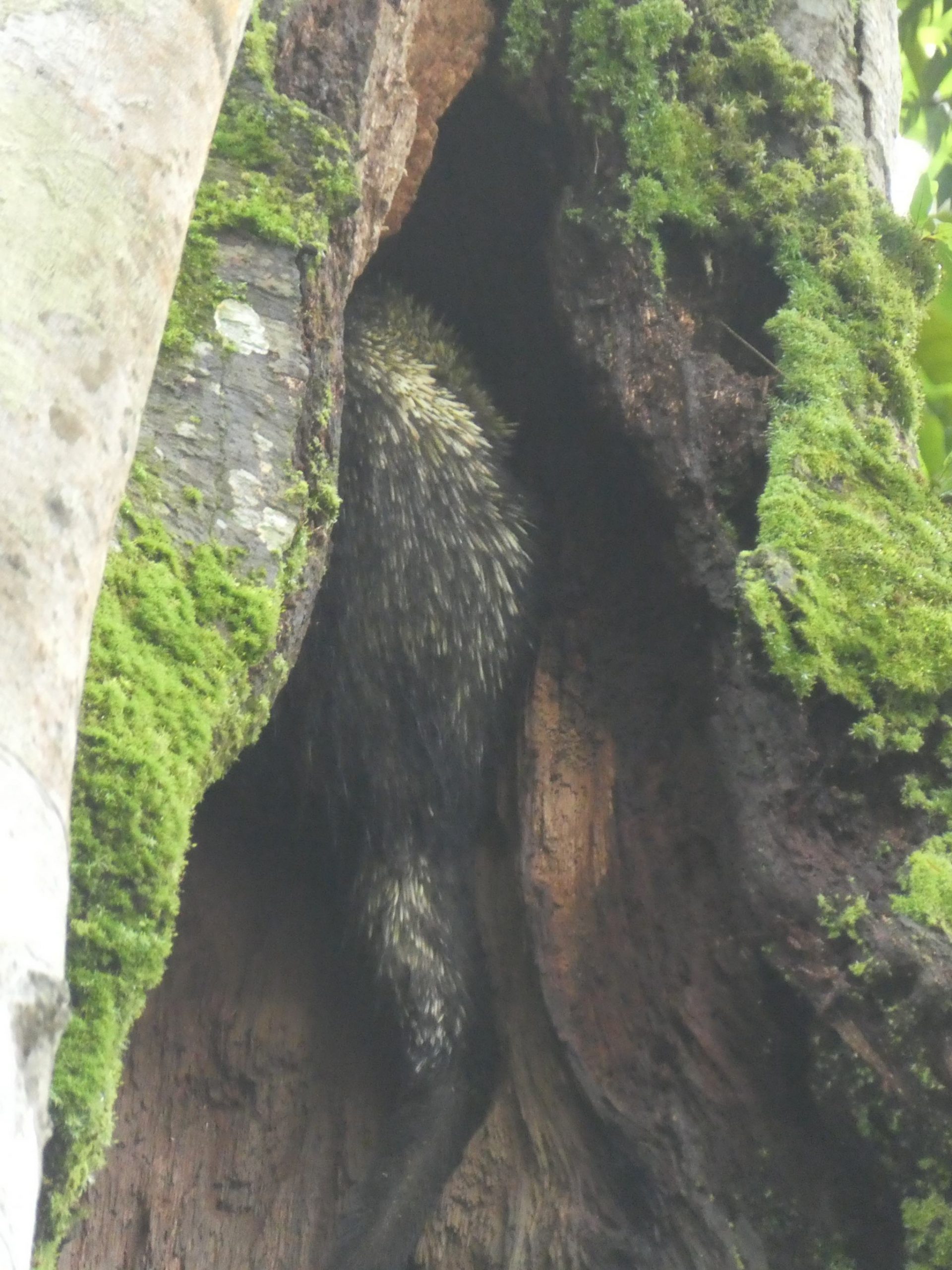 These tiny bats sleep in a formation on the tree so they look like a single, much larger animal in order to trick predators. 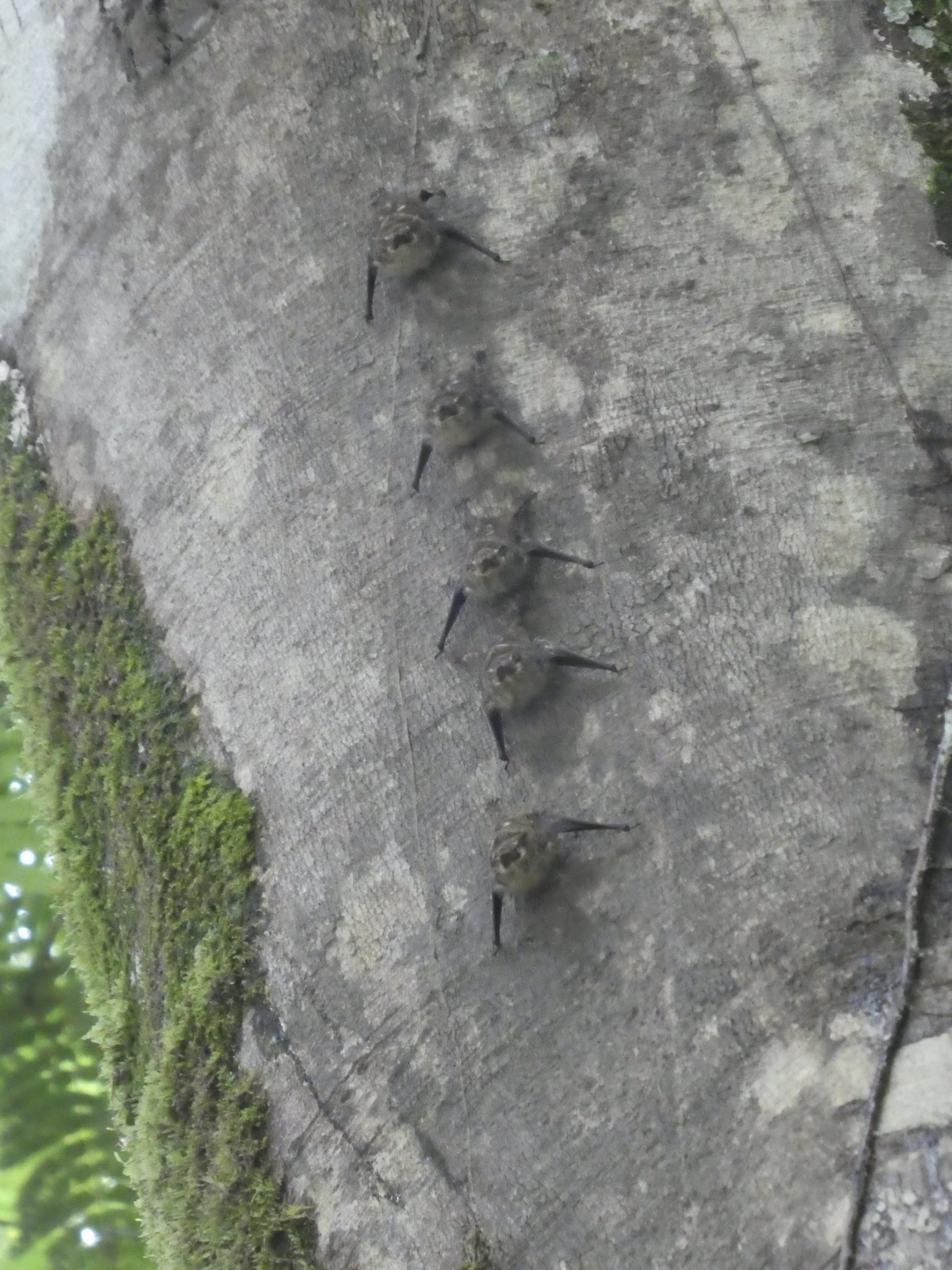 We floated along, with the sound of howler monkeys high above. 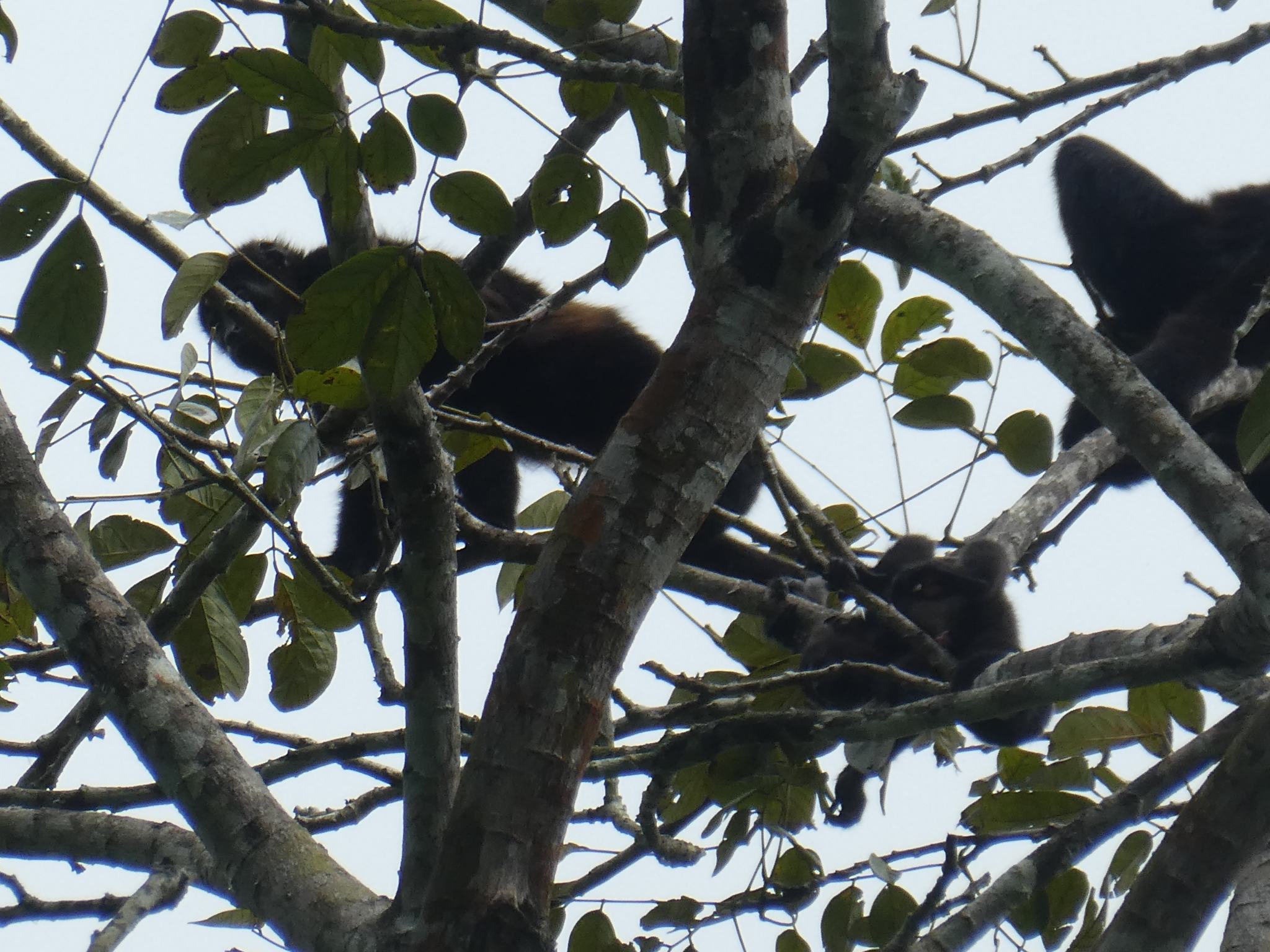 And of course, there were lots of birds, including kingfishers, herons and cormorants. 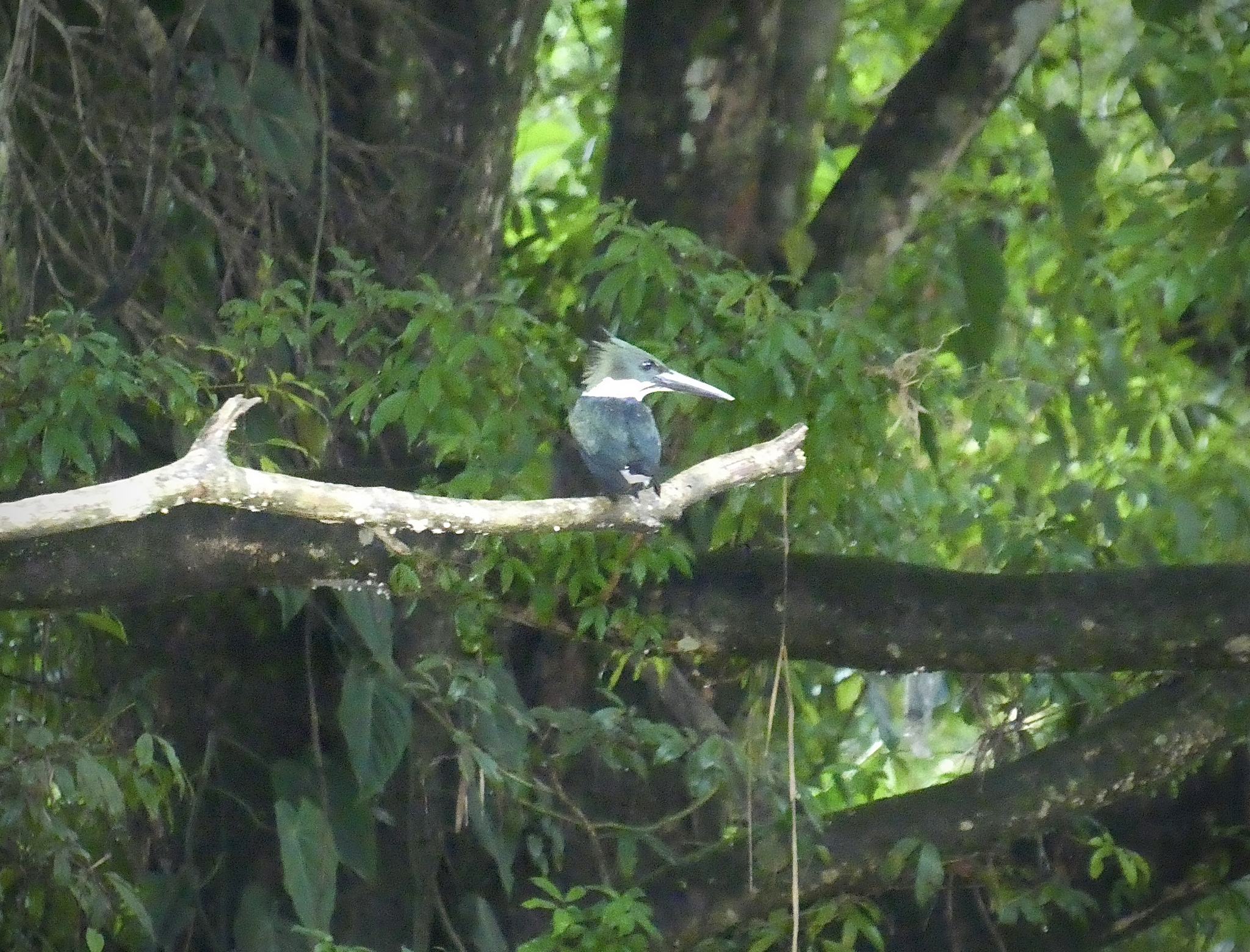 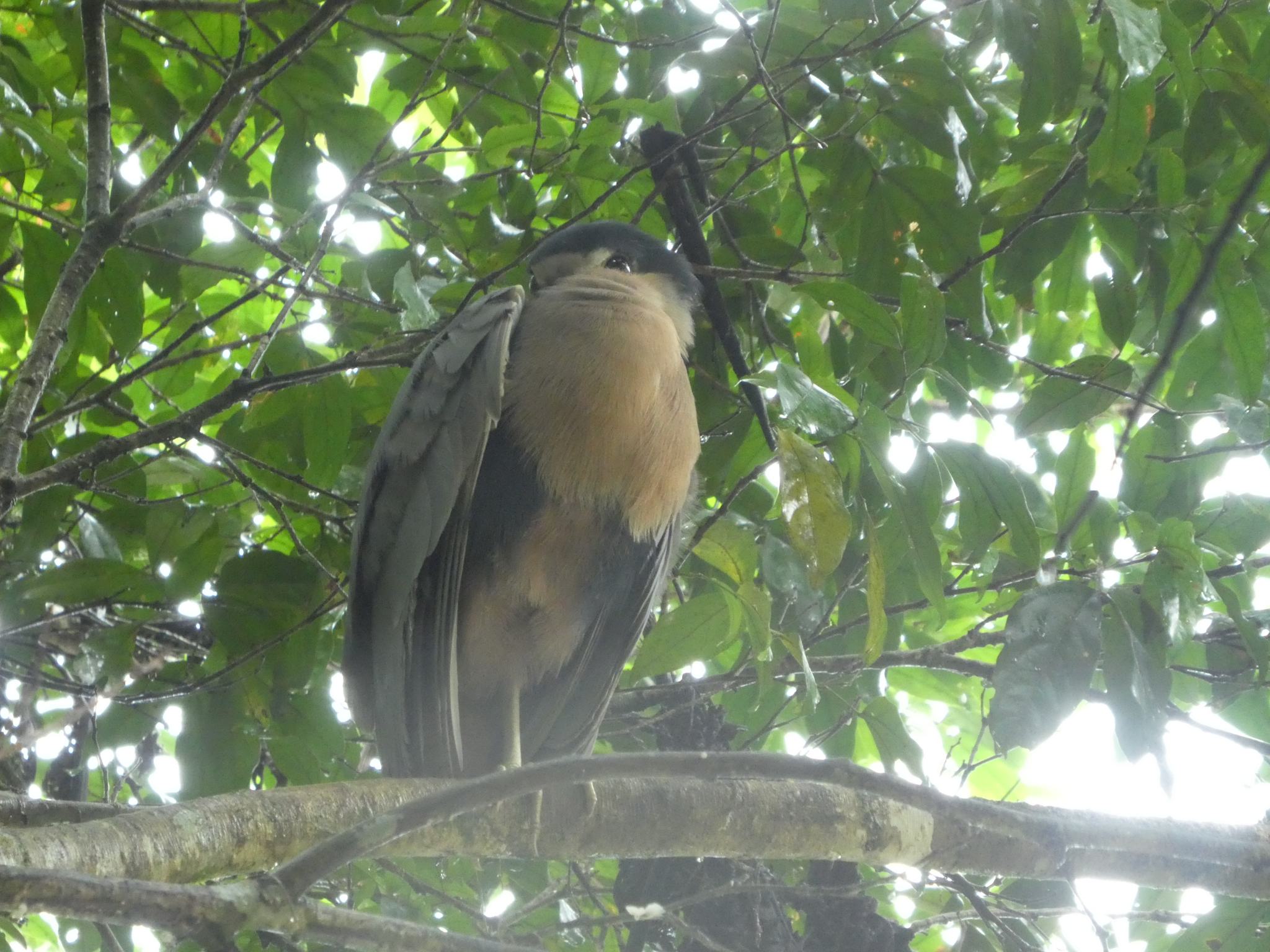 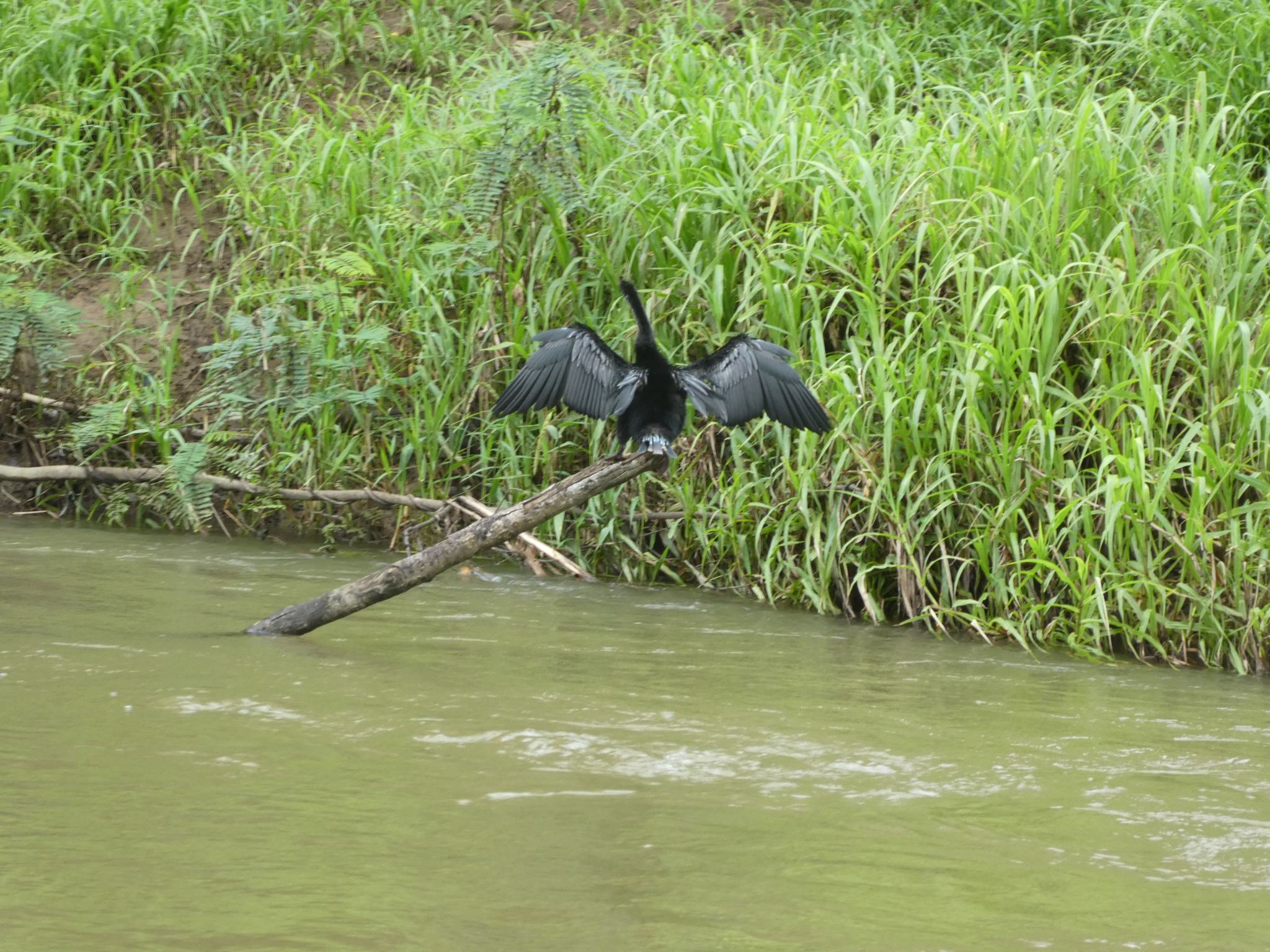 From La Fortuna we headed to Monteverde.  In a straight line, it’s not that far.  But this is the mountains and there’s no such road.  There’s two ways to get there – six to eight hours on a bus, or by jeep-boat-jeep which cuts the journey time to four hours by heading across Lake Arenal.

But wait, there’s one more possibility.  One of the guide operators in La Fortuna has a walk option.  Two days, stopping overnight in a farmer’s house up in the cloud forest.  Crossing two streams and a river, at the end of the wet season, with a guide who hasn’t walked the route in four months.  Indeed, it’s so infrequently done, we think no one had.

What could possibly go wrong?  Find out in our next post.