Founded in 1519, Panama City was the first Spanish city established on the Pacific Coast of the Americas.  It was from here the Spaniards launched their expeditions which conquered the Inca empire in Peru and plundered their way across the northern parts of South America.

As the narrowest point between the Pacific and the Atlantic, it was immensely important to trade because a land journey across the isthmus saved a long and dangerous sail around the tip of South America.  Most of the gold and silver pillaged by the Spanish from Central and South America was brought here for the short transit to the Atlantic Coast and onto ships to Europe.

The original Spanish city was destroyed by the privateer Henry Morgan in 1671.  The only major item of value saved was the Golden Altar, a huge baroque altar of carved mahogany covered in gold leaf.  Local legend says the priest painted it black and convinced Morgan it was worthless.  He told Morgan the golden one had been stolen by another pirate and even convinced him to contribute to a fund to replace it.  Morgan is reputed to have said “I don’t know why, but I think you are more of a pirate than I am”.

Once Morgan was gone, a new town was built five miles from the destroyed one.  The altar was cleaned up and installed in an otherwise modest church there, where it remains to this day. 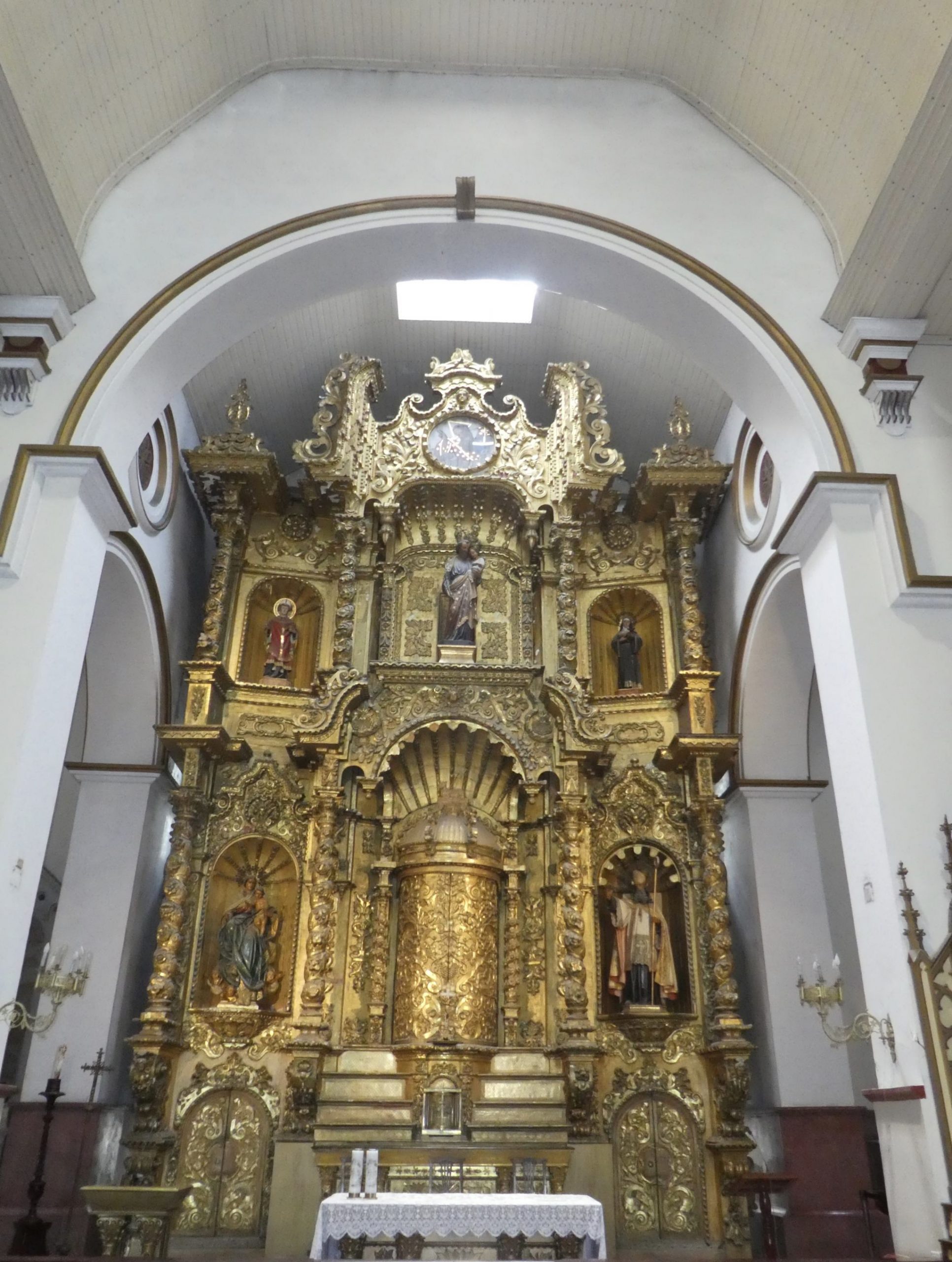 The new town was built on a peninsula surrounded by reefs, and defensive walls to its landward side, to protect against any further pirate attacks.  The new town is now called Casco Viejo, which means Old Town and until the US began its project to complete the Panama Canal in 1904, the whole city was contained within its walls.

Over time, Casco Viejo filled with Spanish colonial mansions, French townhouses built during that country’s attempts to construct the Panama Canal, Art Deco from the era when the US completed the canal, and Caribbean style homes courtesy of workers brought in from Jamaica and other Antillean islands to build the canal.

It fell into disrepair in the mid 20th century and became a virtual slum, riddled with drug and gang related violence.  But in the late 20th century the government realised its cultural and potential touristic value.  Major restoration programs have transformed much of it, and Casco Viejo was declared a World Heritage site by UNESCO in 2003.

Work is ongoing, so there’s still derelict buildings like this. 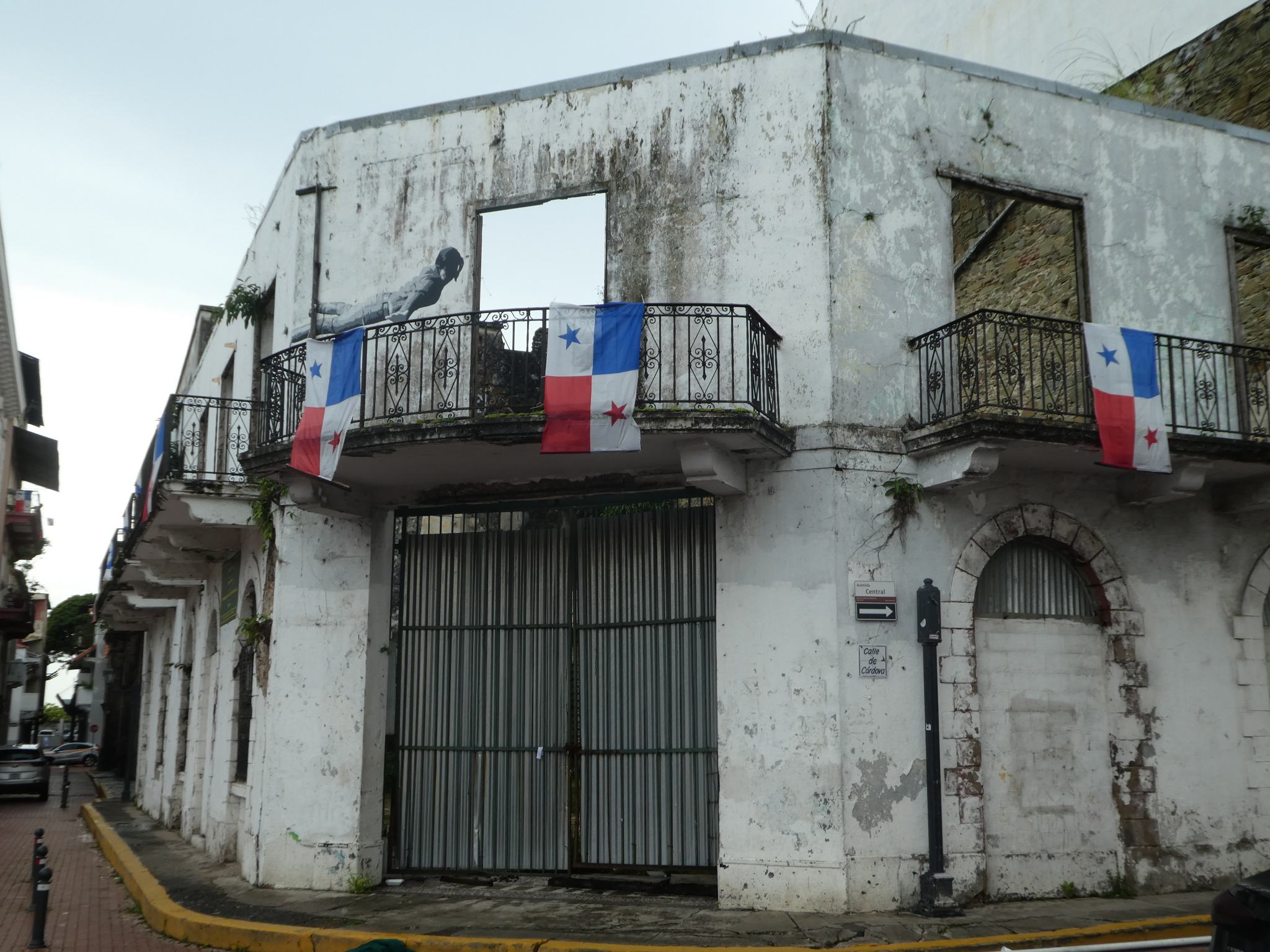 But for the most part, the buildings in the central part of the precinct are picture perfect. 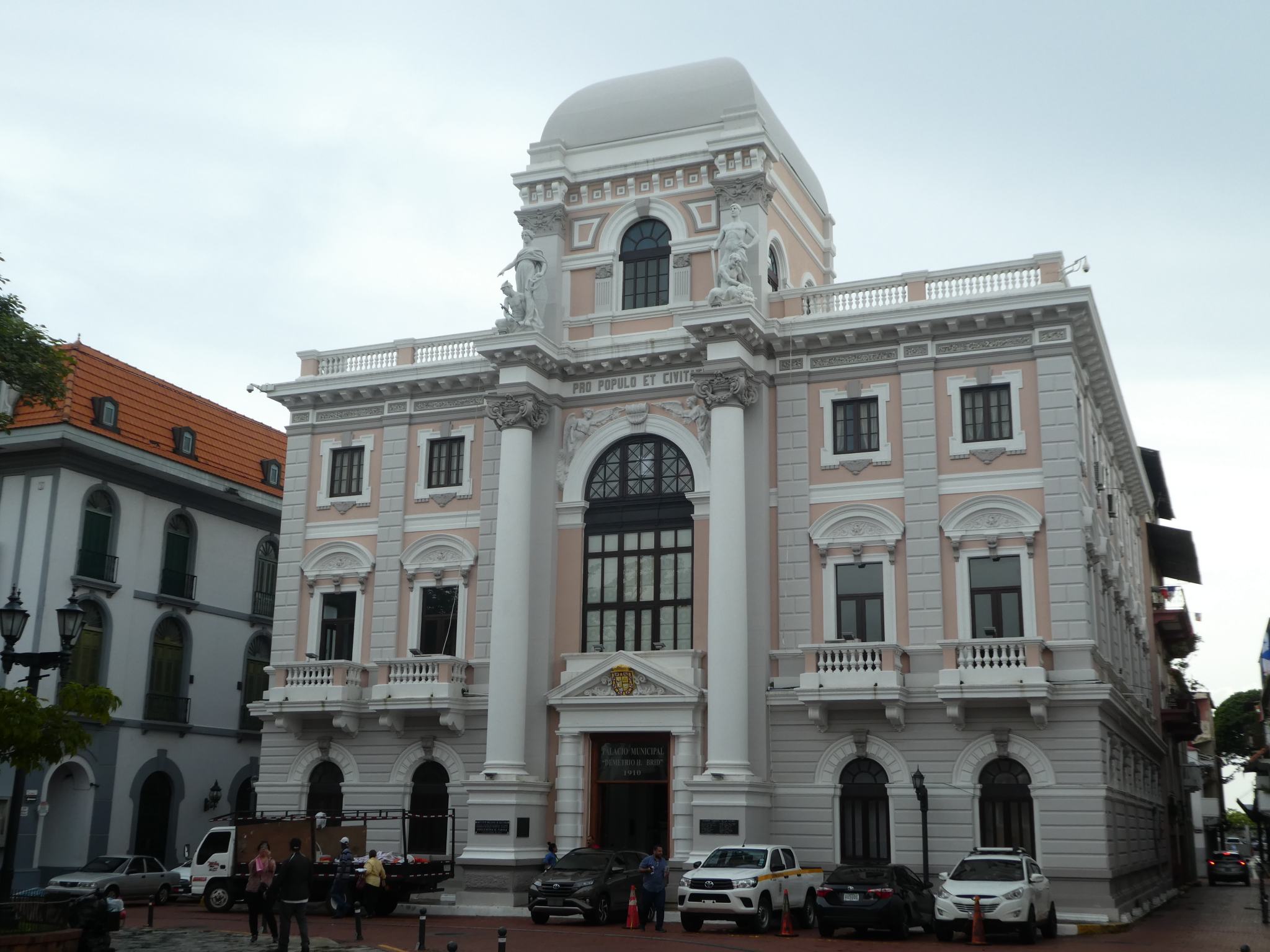 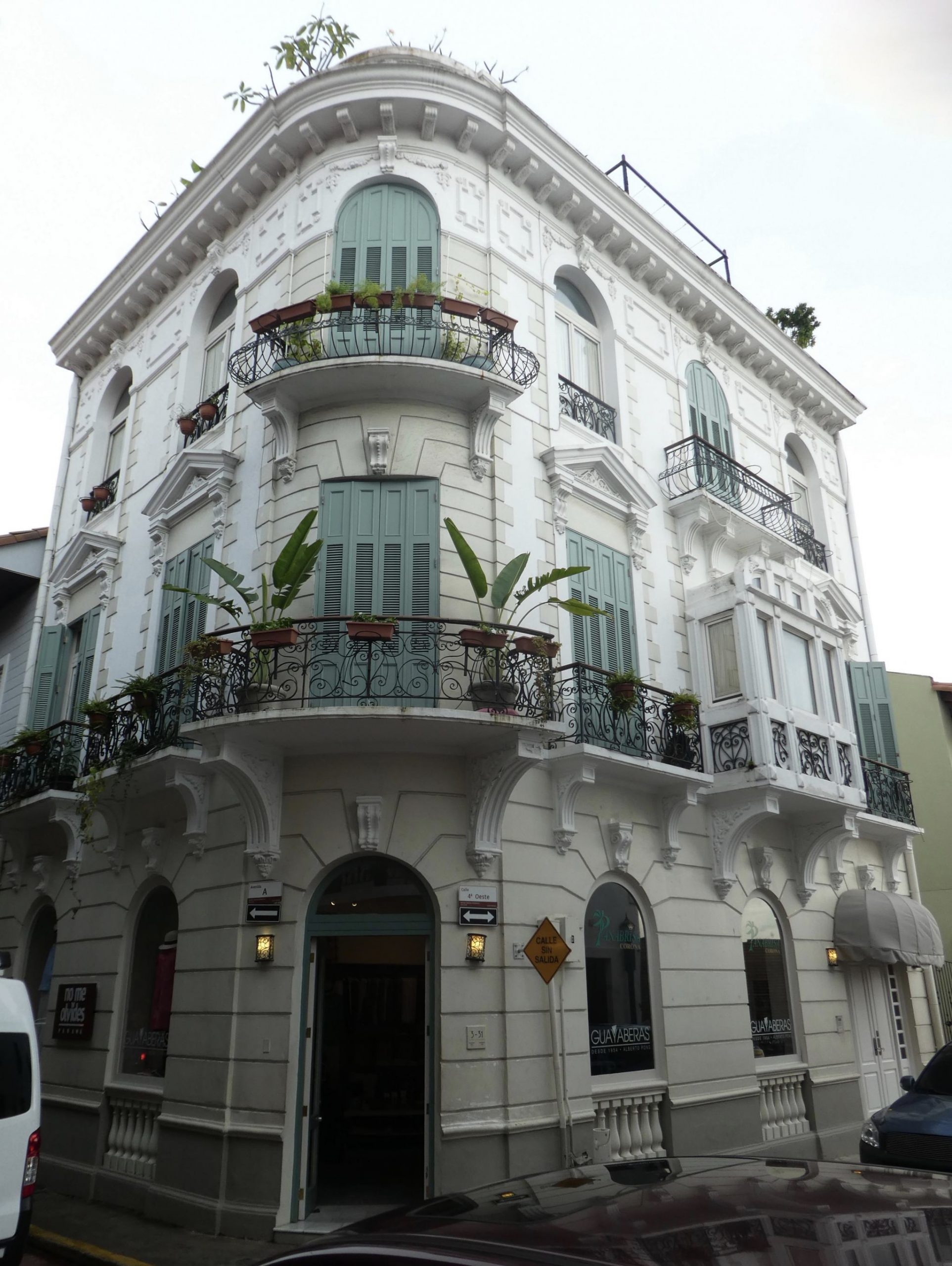 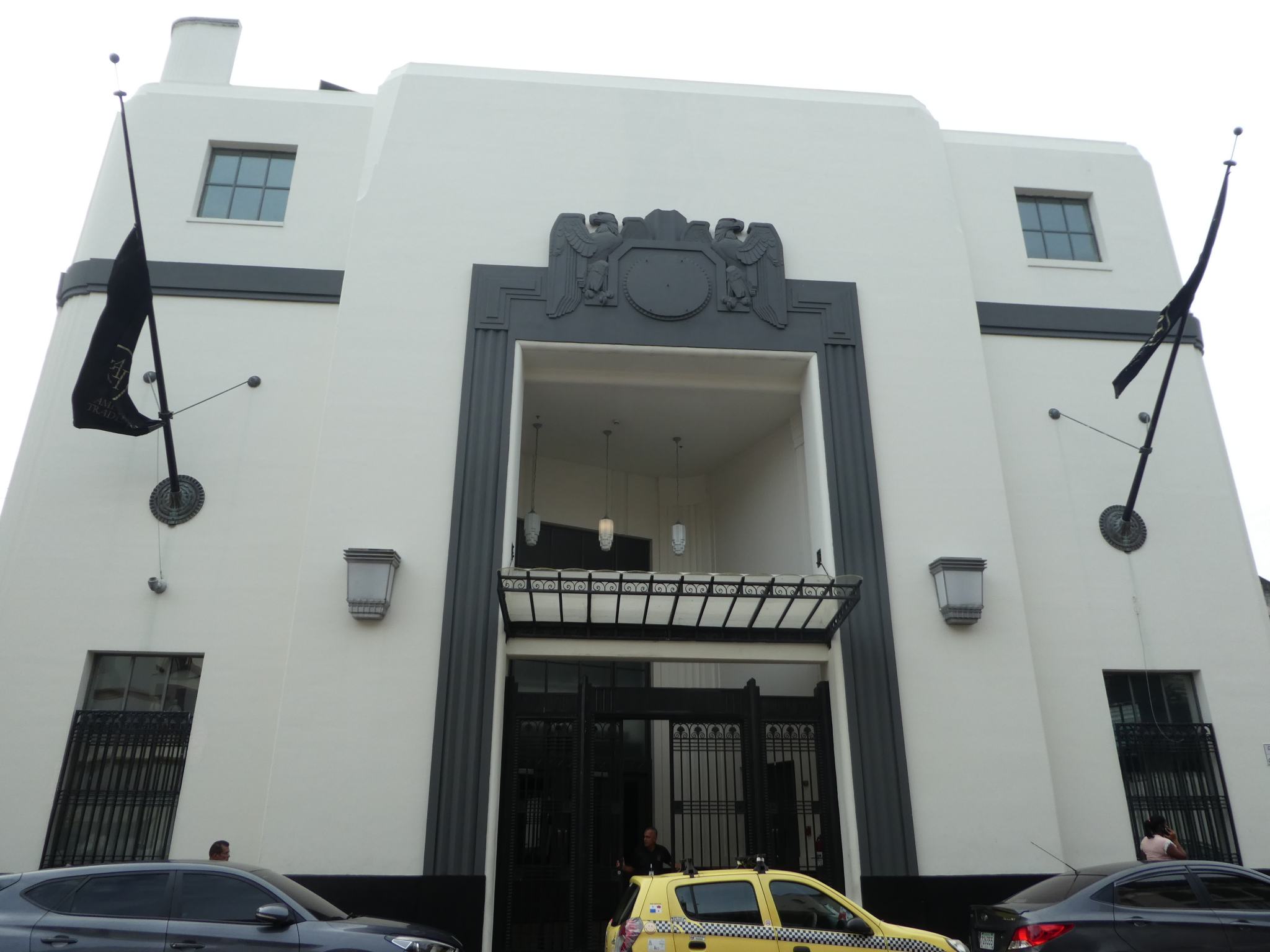 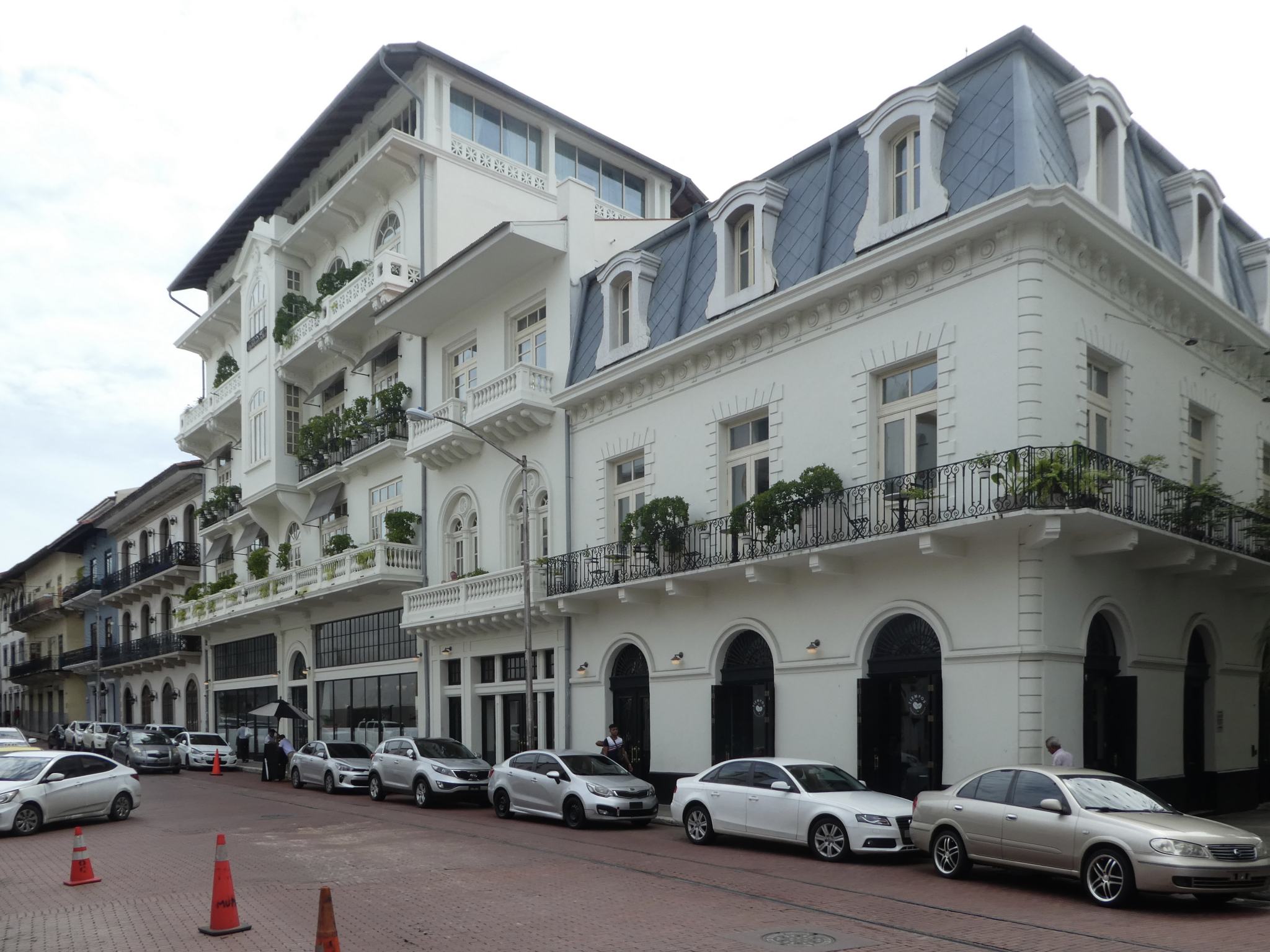 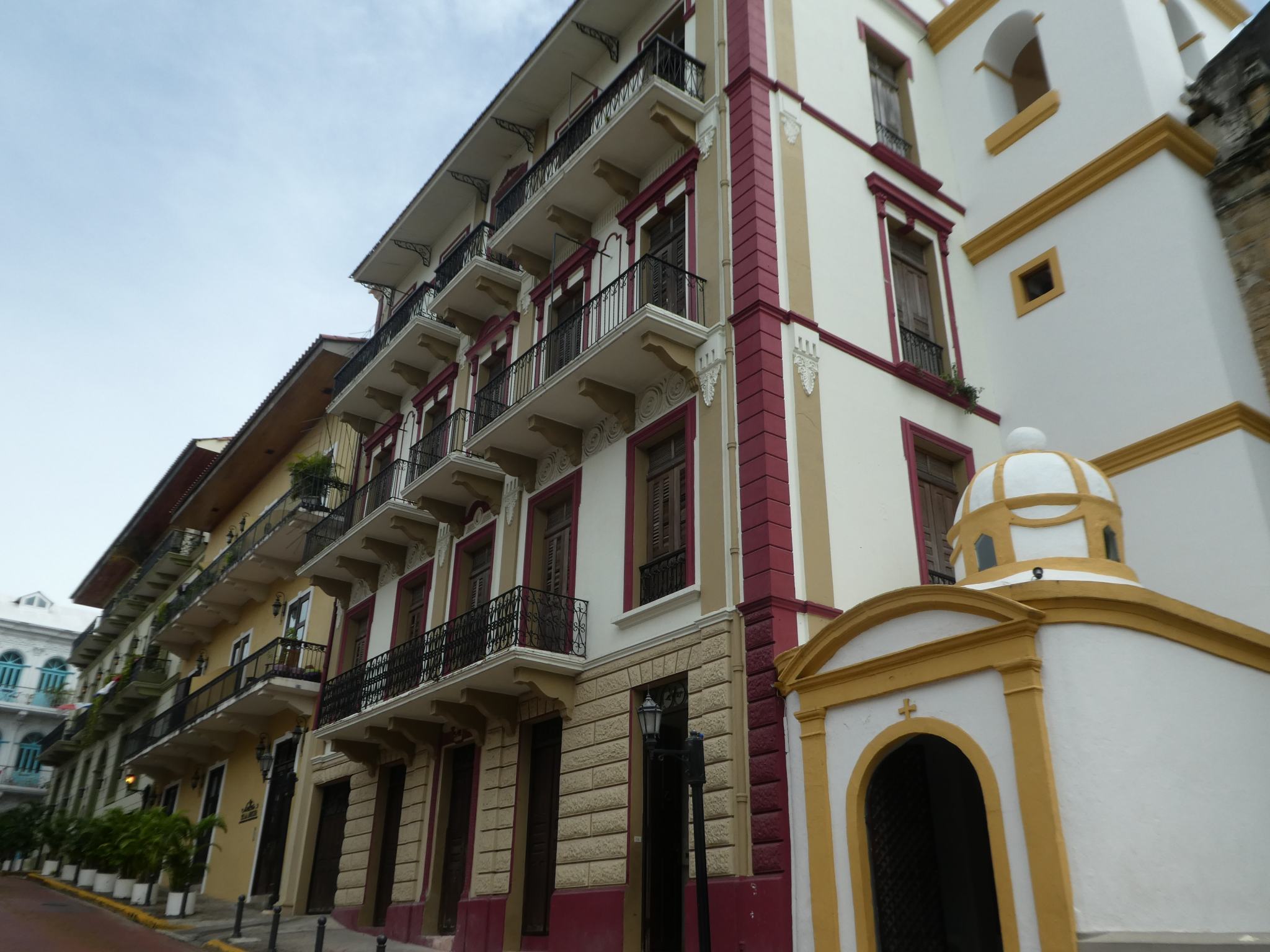 Many now contain hotels, inns, restaurants and cafes.  The renewal program is not without controversy.  As more and more properties are gentrified, locals who have been here for generations are being priced out of their own community.  In a way, it’s a microcosm of Panama more broadly, which has a huge disparity between rich and poor.

Outside Casco Viejo, there are large areas where housing is little more than shacks.  Minutes away, shiny glass and steel skyscrapers look like any first world city, courtesy of Panama’s role as a financial and banking hub, albeit of sometimes dubious reputation. 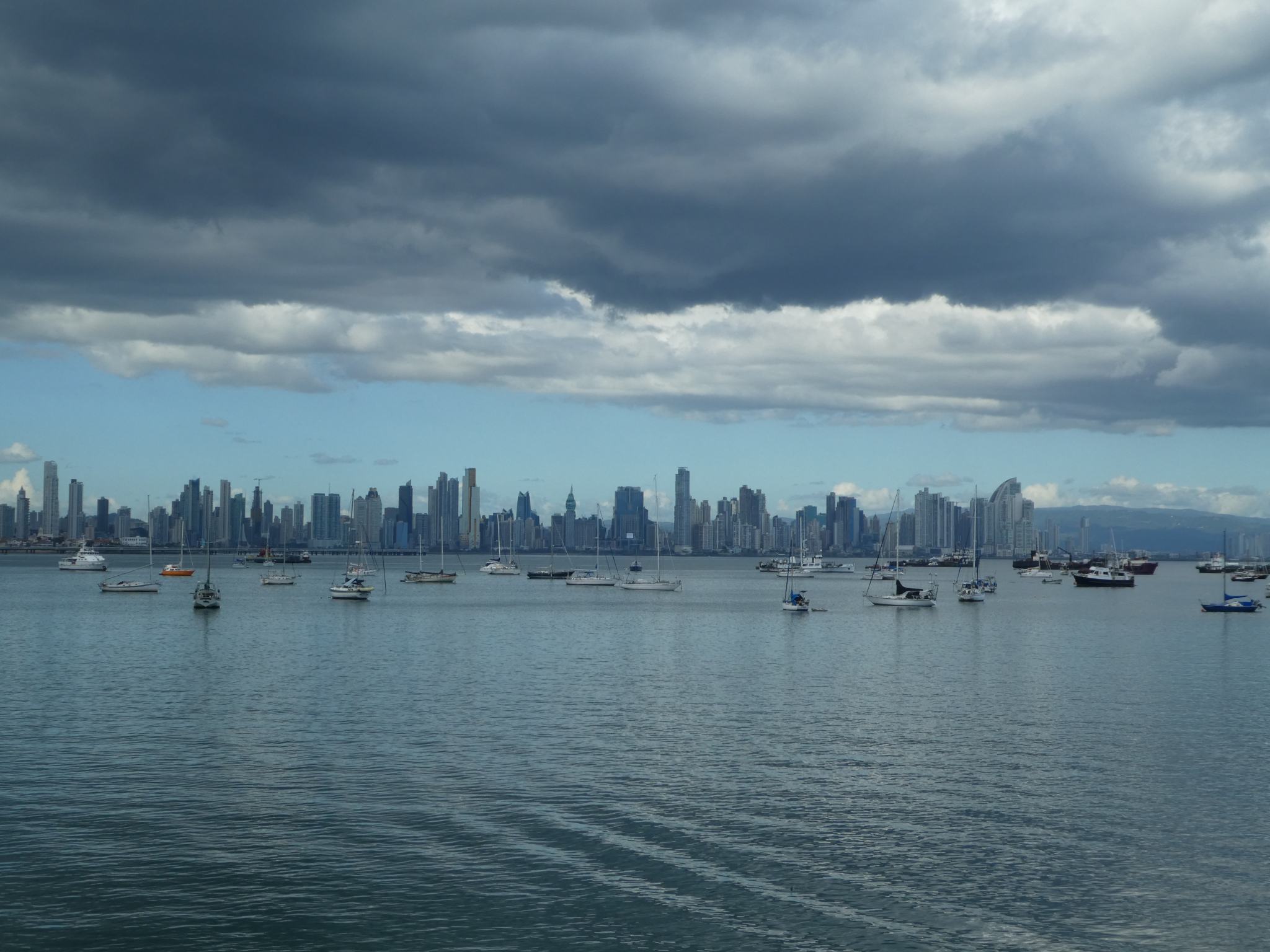 Built in 1913 with rocks excavated during the construction of the Panama Canal, the Amador Causeway joins Panama City to four small islands more then three kilometres out to sea.  The largest of the islands was a US military facility in the years that country ran the canal, but now the islands are home to a Smithsonian-run biology research station, a marina, amusement rides and other recreational facilities.

About half way along the causeway is the Biomuseo, the first Frank Gehry designed building in Latin America.  The rise of the isthmus of Panama three million years ago created a land bridge between North and South America which facilitated a massive animal migration between the continents.  It changed the ocean currents on both sides, resulting in climate changes which altered forever the biodiversity of the entire hemisphere.  The museum opened in 2014 and consists of a series of galleries describing these changes and showcasing the current biodiversity of Panama.

It’s an interesting museum, and like most Gehry designs, the building itself is a highlight.  This one is supposed to evoke the colours of the rainforest canopy. 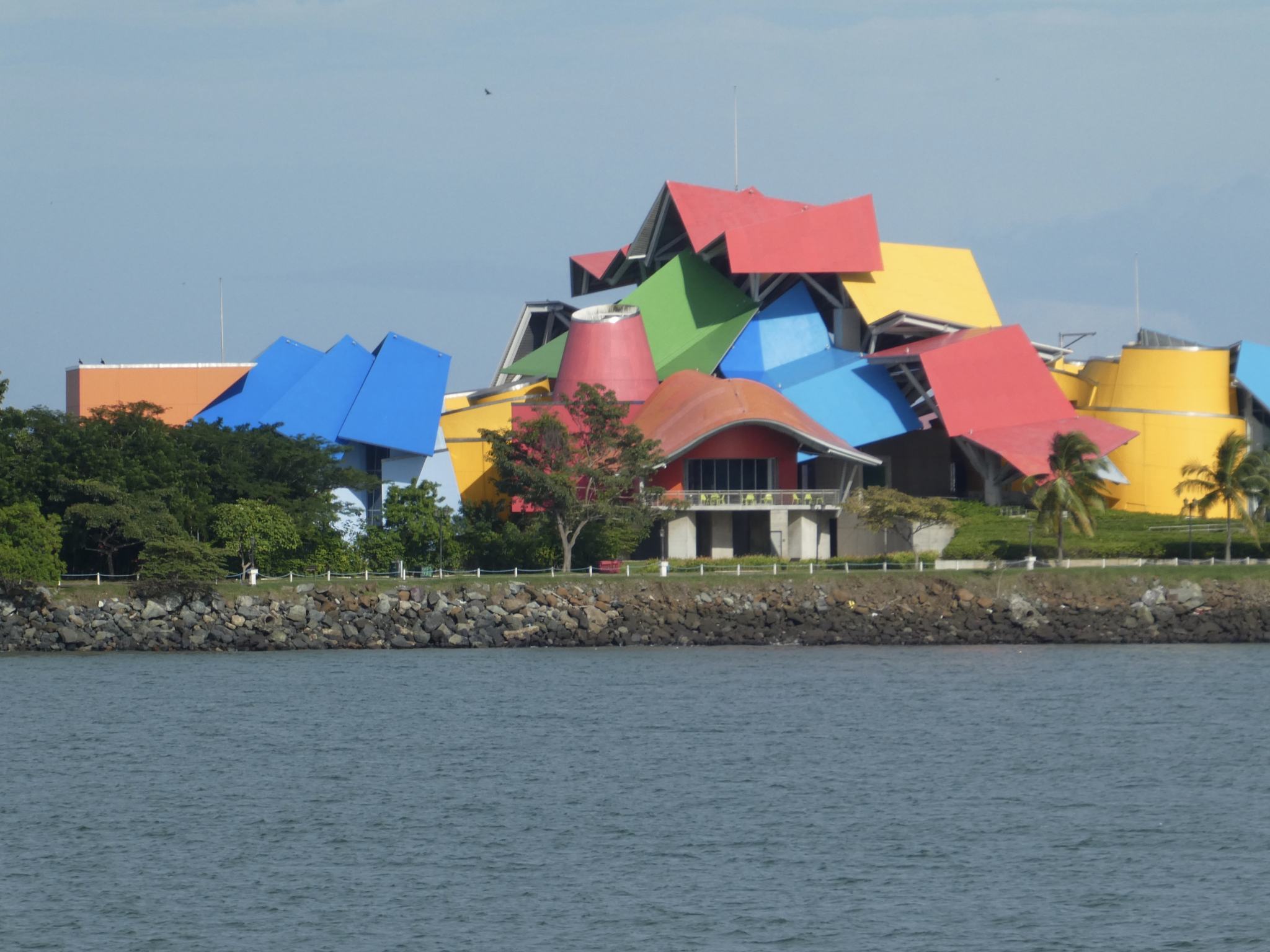 Back in Casco Viejo, an engineering marvel can be found in the ruins of the Dominican Church.  Near the entrance is the famed Flat Arch which formed one of the supports for the upstairs choir area.  It spans 50 feet (0ver 15 metres) and is so flat it was said to be impossible.

The friar directing the construction of the church claimed he received divine guidance as to how to place the stones.  Sceptics thought the arch must have had a concealed beam running through it.  But the arch survived a fire in 1756 which destroyed all but the shell of the church, and in 1913 an examination confirmed that there is no hidden beam.  Divine assistance?  Who knows.  But an engineering marvel, definitely. 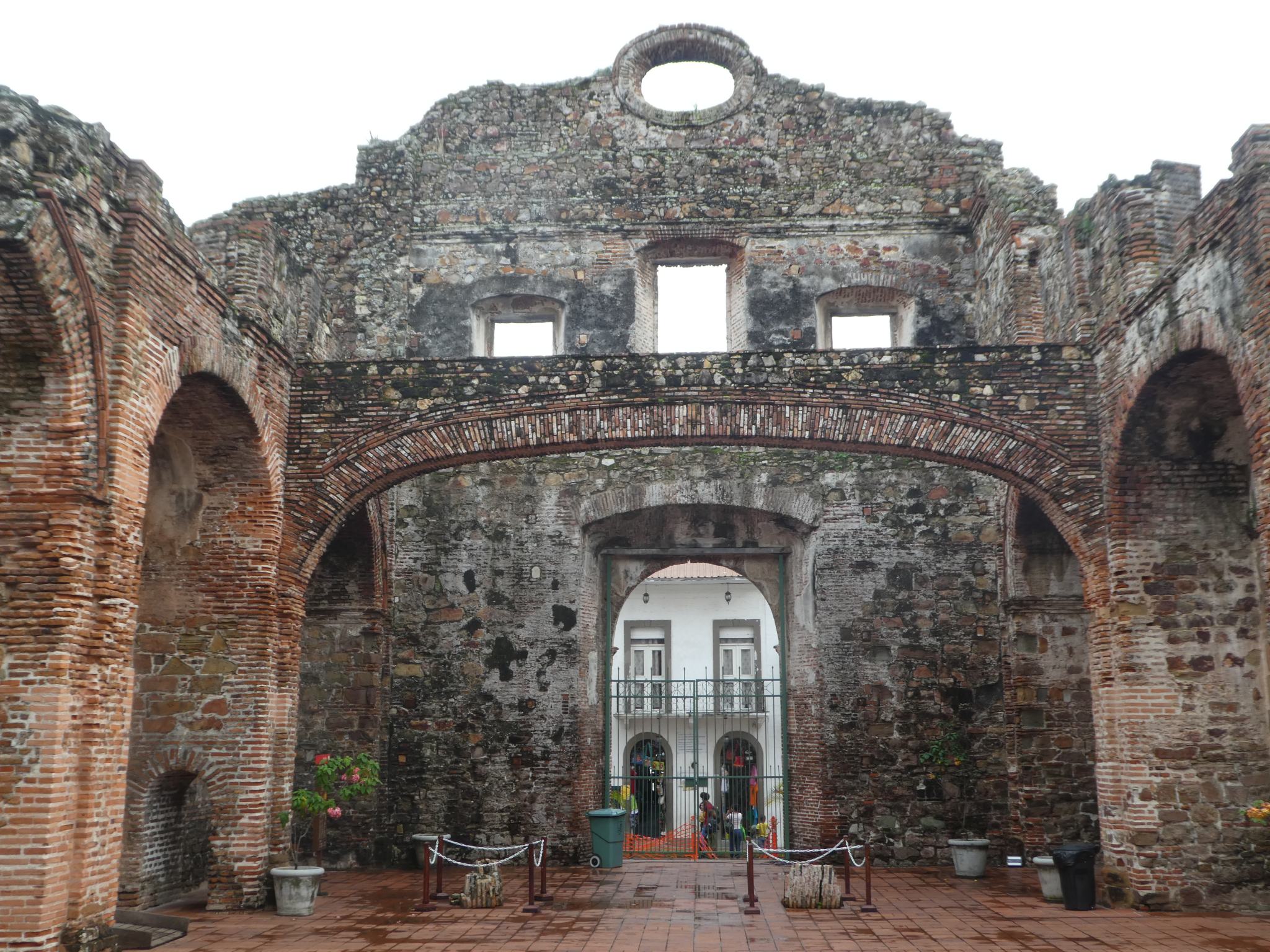 Of course, Panama’s uber-engineering marvel, and biggest tourist attraction, is the Panama Canal.  There’s a really informative museum in town, and day tours on boats through the locks.

The French began construction of the canal in 1881.  They intended to build a sea level canal, ie excavate a channel across the isthmus of Panama between the Pacific coast and the Atlantic coast.  A coast to coast sea level canal is how the Suez Canal was achieved, but in Panama the project was beset by engineering problems, high worker mortality rates from malaria and yellow fever, and cost over-runs.  The project went bust amid a bribery scandal.

The US took over in 1904 with a new engineering approach. Instead of attempting to excavate a sea level canal, they dammed the Chagres River to create a massive lake, the Gatún Lake, across the isthmus and built a series of locks to raise and lower ships between sea level and the lake level at either end.

We boarded a boat at a small port on Gatún Lake and travelled toward the Pacific Coast.  We passed through the Culebra Cut, where the canal slices through the Continental Divide, the mountain range which runs the entire length of the Americas from Alaska to Tierra del Fuego at the southern tip of South America. 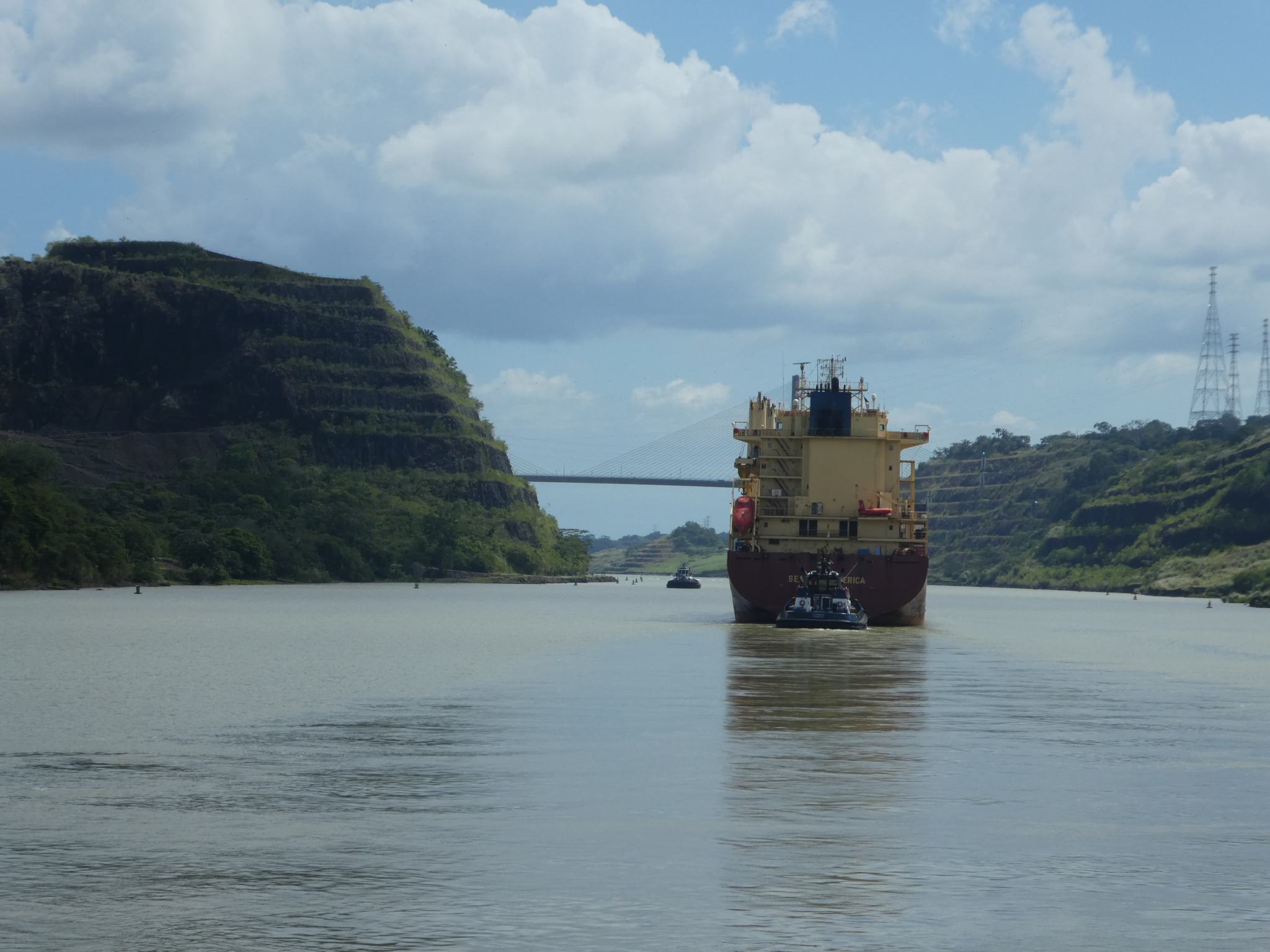 The Centennial Bridge, completed in 2004, now spans the cut. 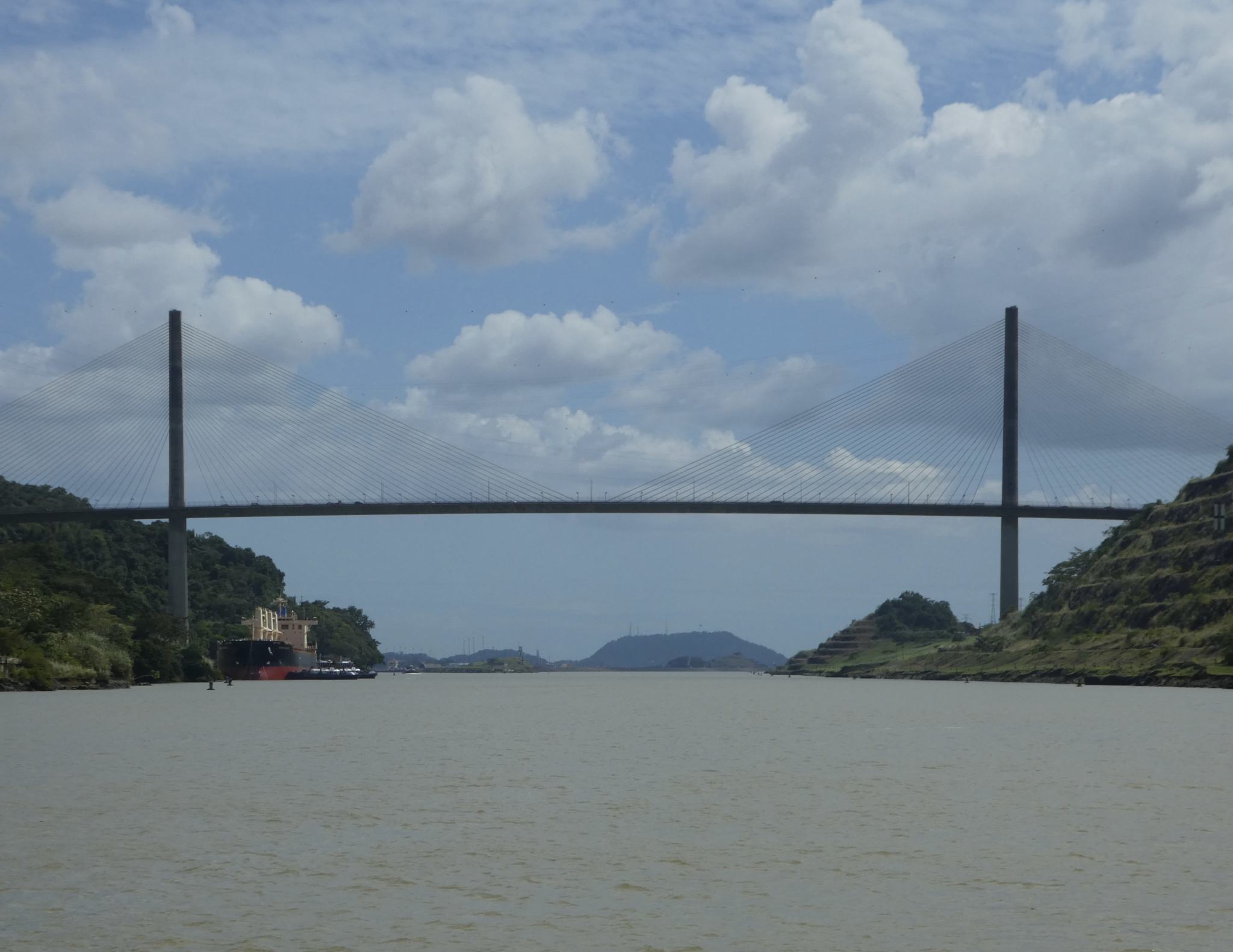 Eventually we reached the locks.  It’s pretty simple really.  We motored into the first lock, followed by a container ship. 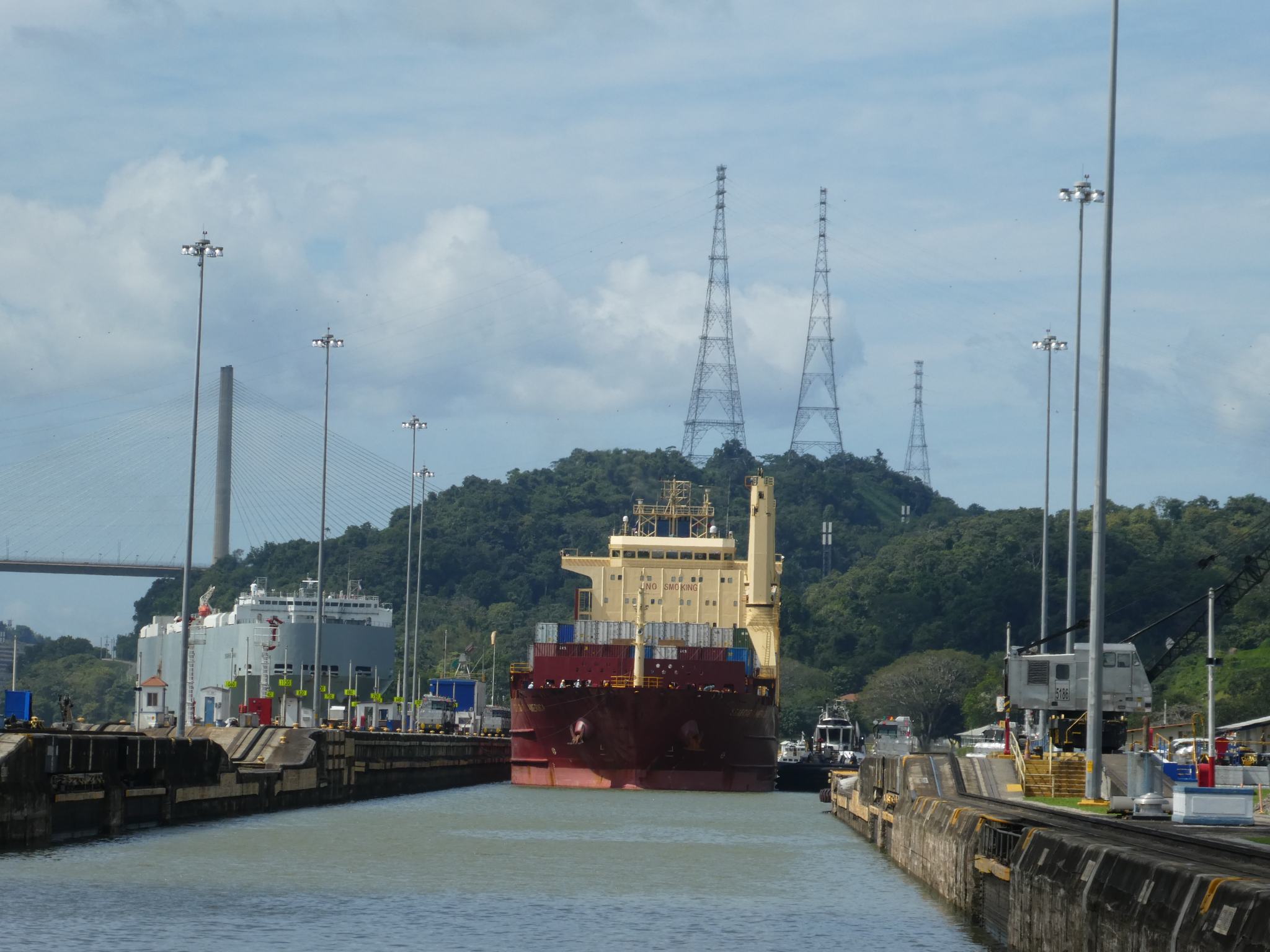 The lock empties, bringing the boats down one level.  As you can see, it’s a snug fit. 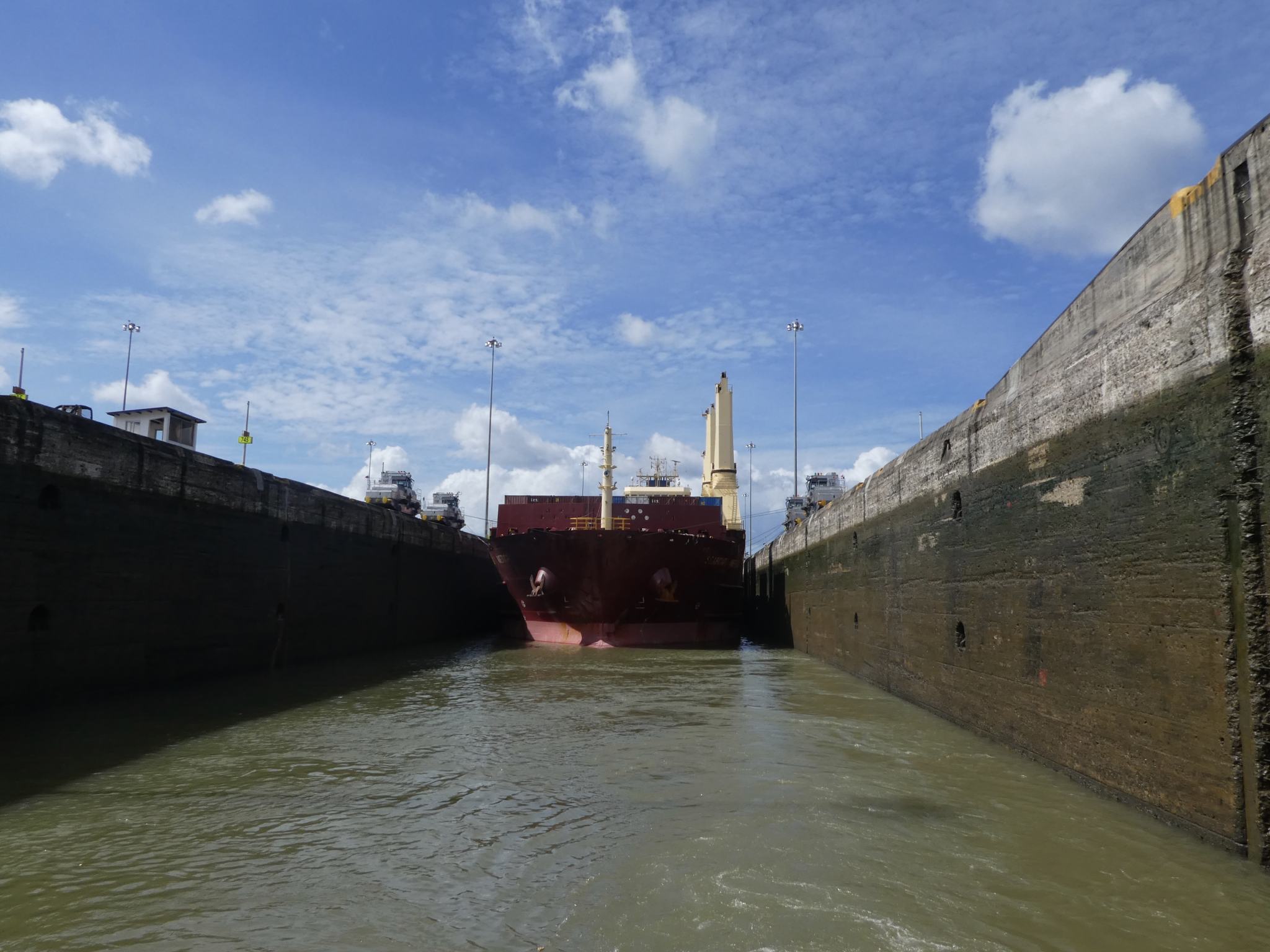 The doors open and the boats sail into the next lock. 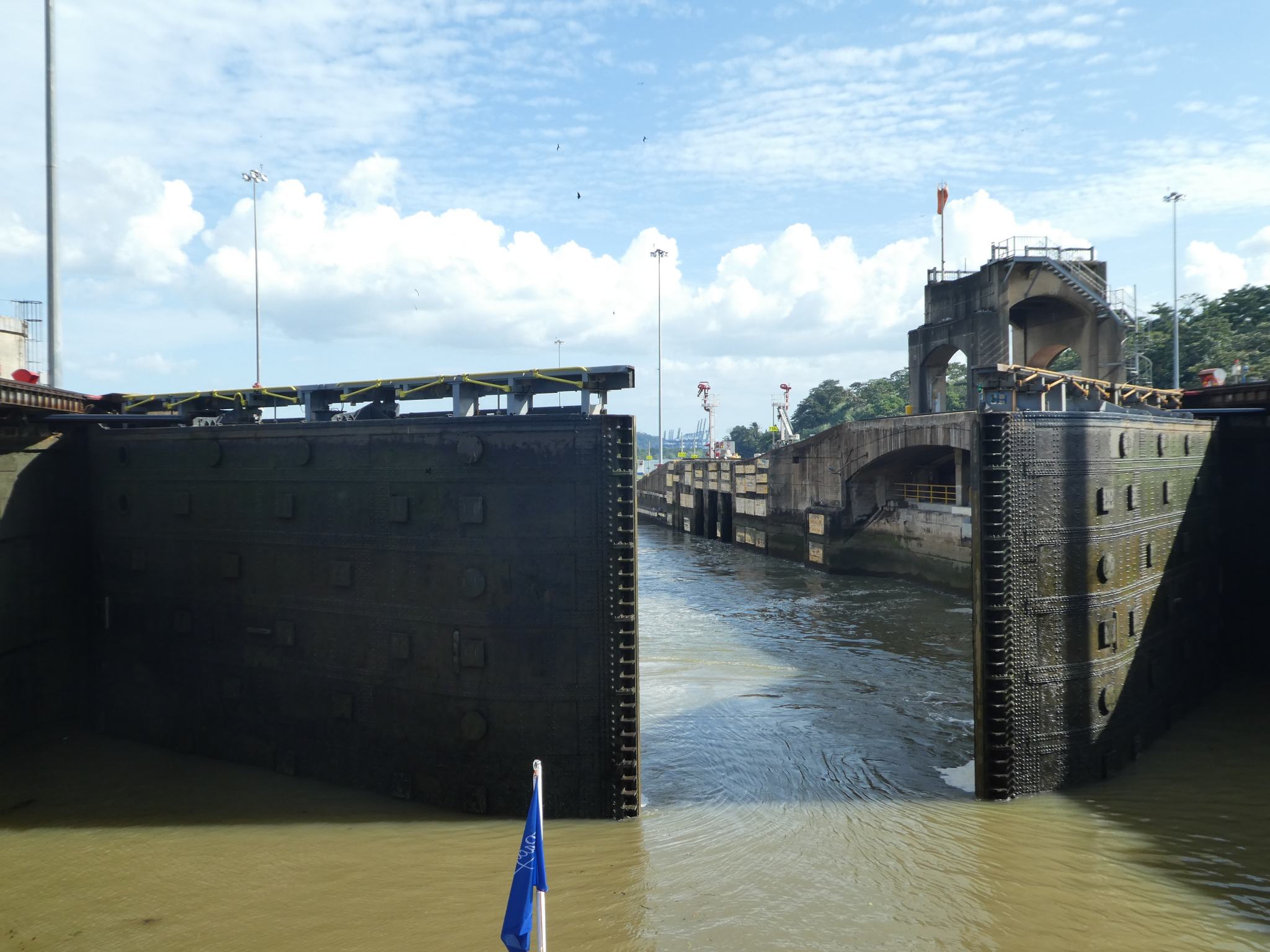 The whole process is quite time consuming and proceeds very slowly.  The sheer scale of it is impressive, but hand on heart, well, we are going to say it – it’s more of a boy thing.  Yes, we know that’s not PC, but gender stereotyping or not, there were a lot of women and kids asleep by the time we were through!