From Bogotá we flew to Cancun airport and then caught a bus to Tulum.  On the Caribbean coast of the Yucatan peninsula in Mexico, Tulum is known for its white sand beaches, with an increasingly (over)developed tourist resort strip along the coast.

We weren’t here for the beach and didn’t even go there.  We were en route to Belize, and stopped in Tulum for two things only – to visit the Mayan ruins and to dive in a cenote.

Near the modern day town of Tulum, on a 12 metre high cliff overlooking the sea, are the remains of a pre-Colombian Mayan walled city.  Built between the 12th and 14th centuries, it was one of the last of the large cities built by the Maya.

Facing the sea on one side and surrounded on the other three sides by walls several metres thick and three to five metres high, the city was built with defence in mind.  At the time, war between Mayan tribes was the order of the day.

Tulum survived the arrival of the Spanish, but Old World diseases probably decimated its population.  The Maya abandoned the site about 75 years after the Spanish arrived.

Unlike many other Mayan cities, Tulum was not then lost to nature.  Maya pilgrims continued to come for ceremonial purposes.  But it’s history was eventually lost and when ‘discovered’ and studied by archeologists in the 1800s, little was known about the purpose and use of many of the structures, and even less about the people who built it.

The Temple of the Wind God sits on the cliff edge facing out to sea.  No one really knows how it was used.  It is assumed to be a temple as it sits on a round base and circles are associated with the god of the wind in Mayan mythology. 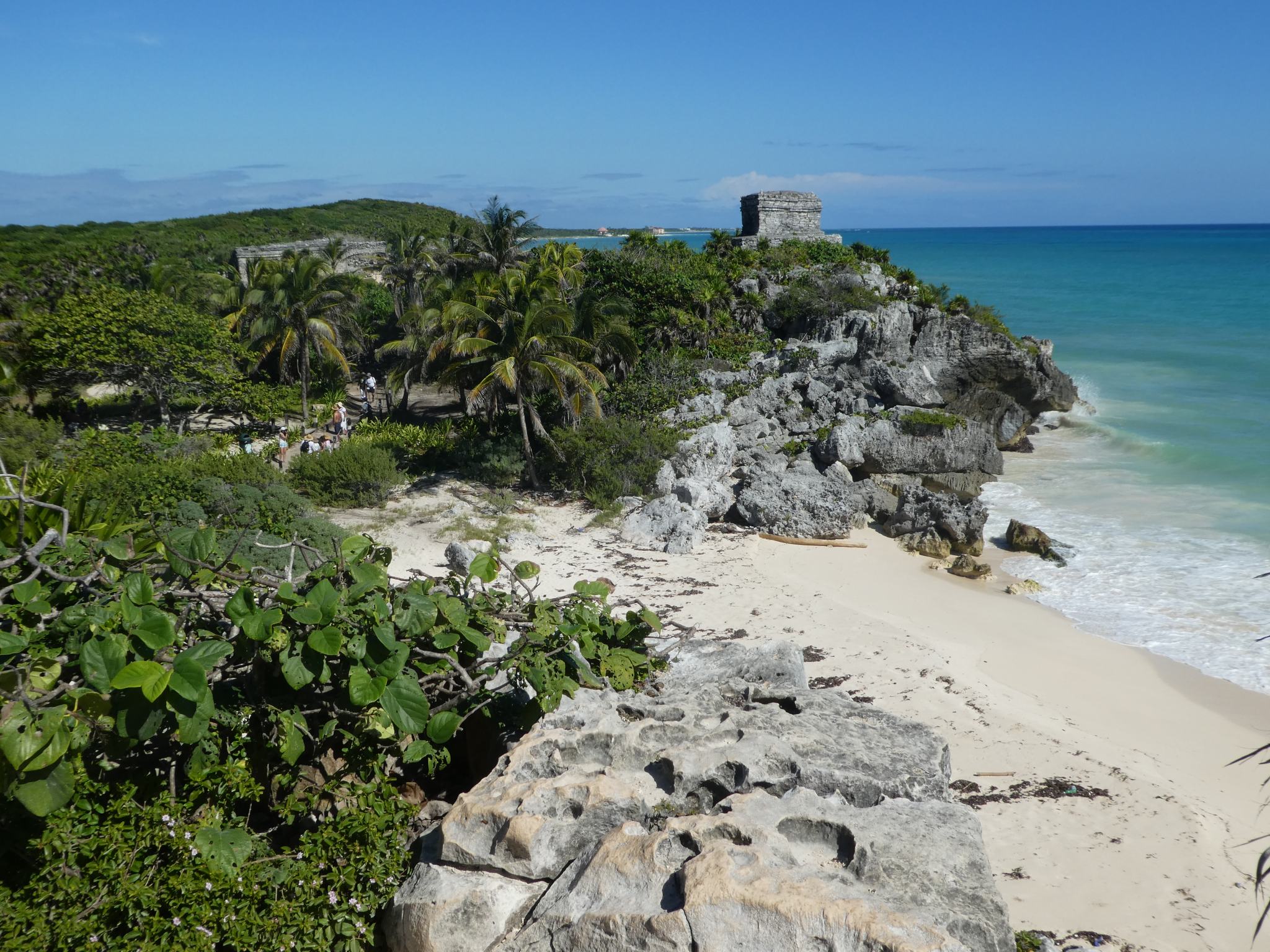 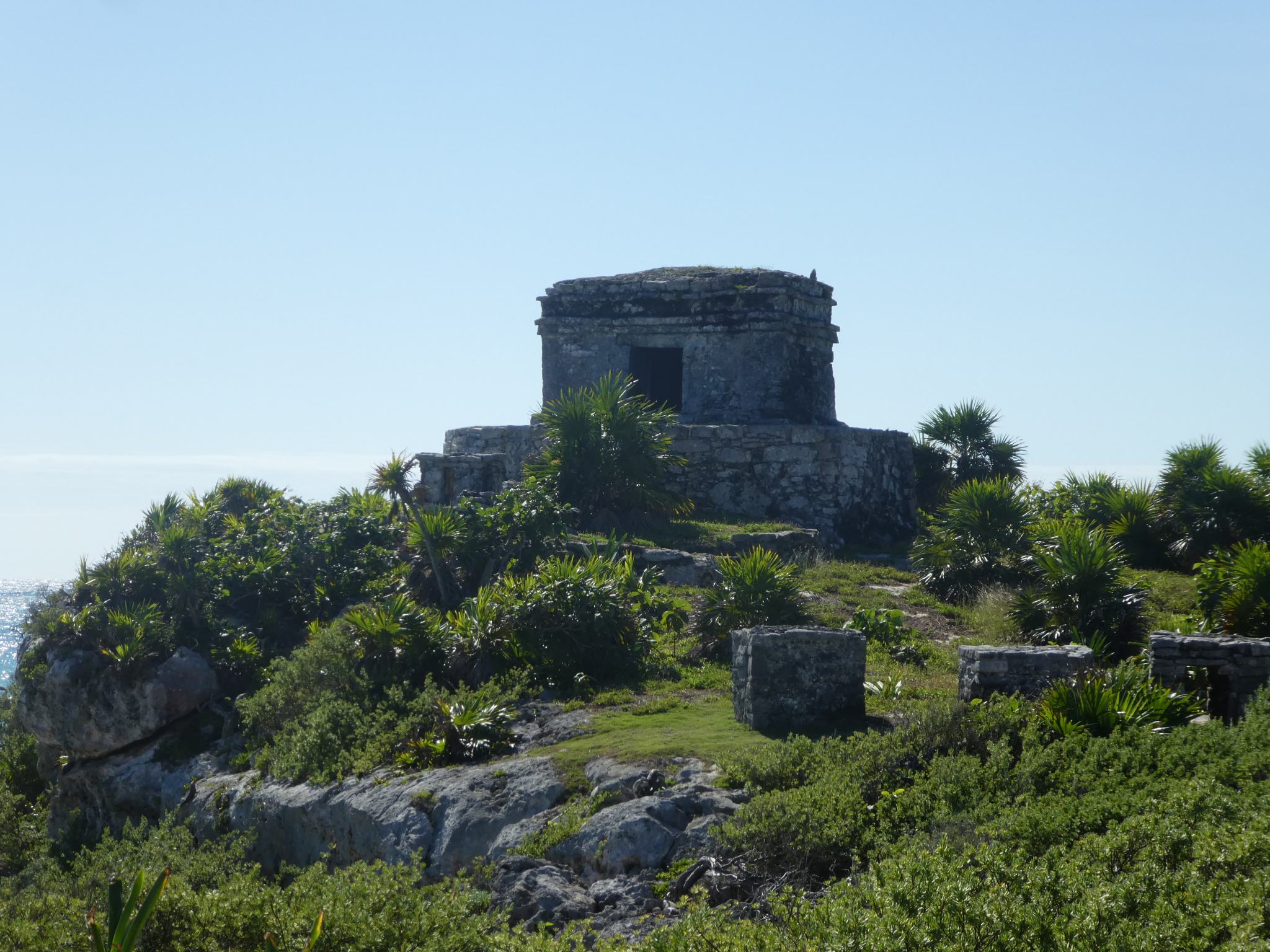 The structures at Tulum are not particularly tall compared to other famed Mayan ones in Mexico, such as those at Chichen Itza or Teotihuacan.  The tallest, a watchtower nicknamed El Castillo (the castle) by the Spaniards, is only 7.5 metres high. 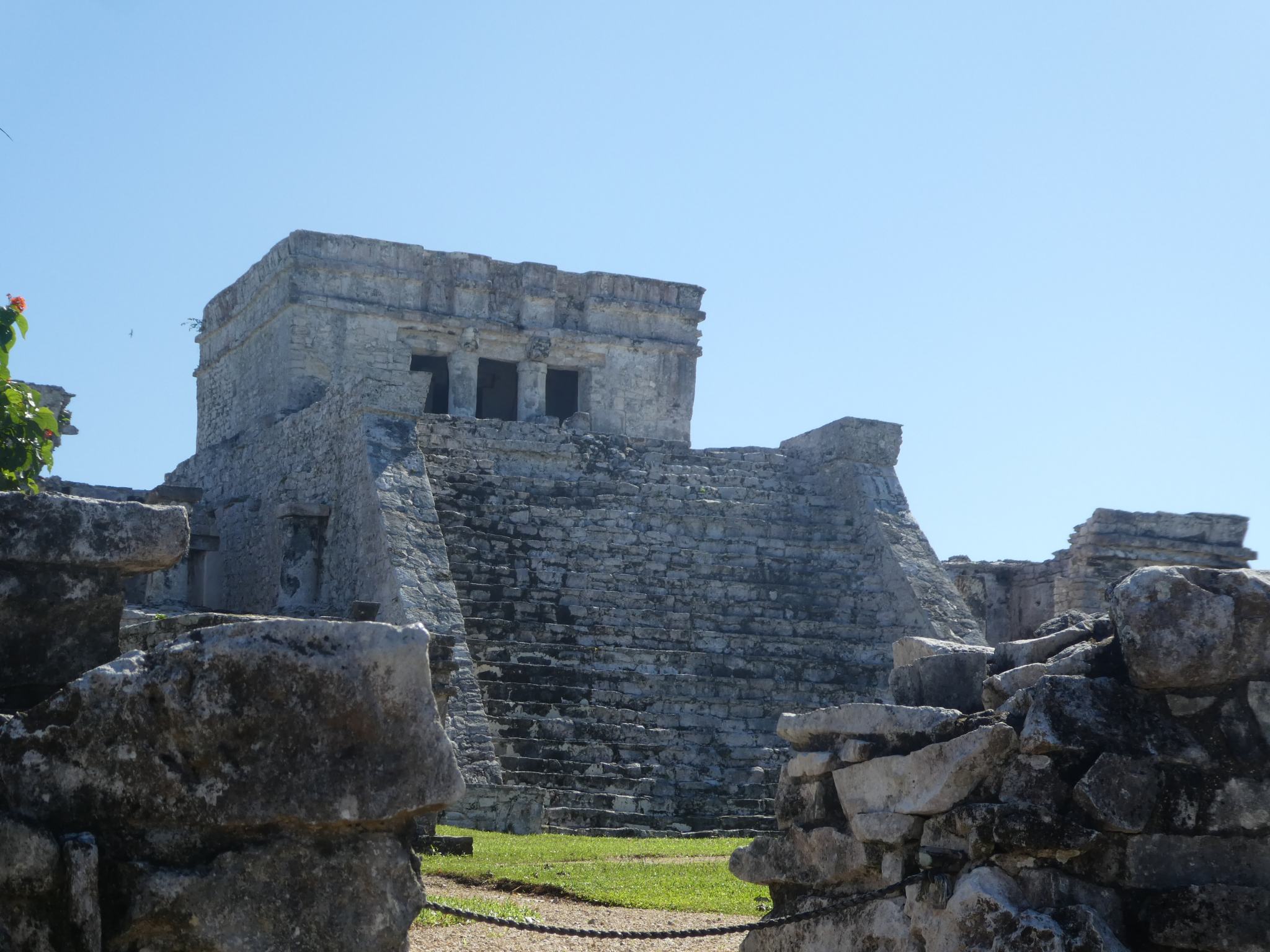 The Temple of the Frescoes is believed to have been an observatory for tracking the movements of the sun.  It features carved motifs of the ‘descending god’ or ‘diving god’, an upside down part-human figure who has also been found at other Mayan sites on Mexico’s east coast. 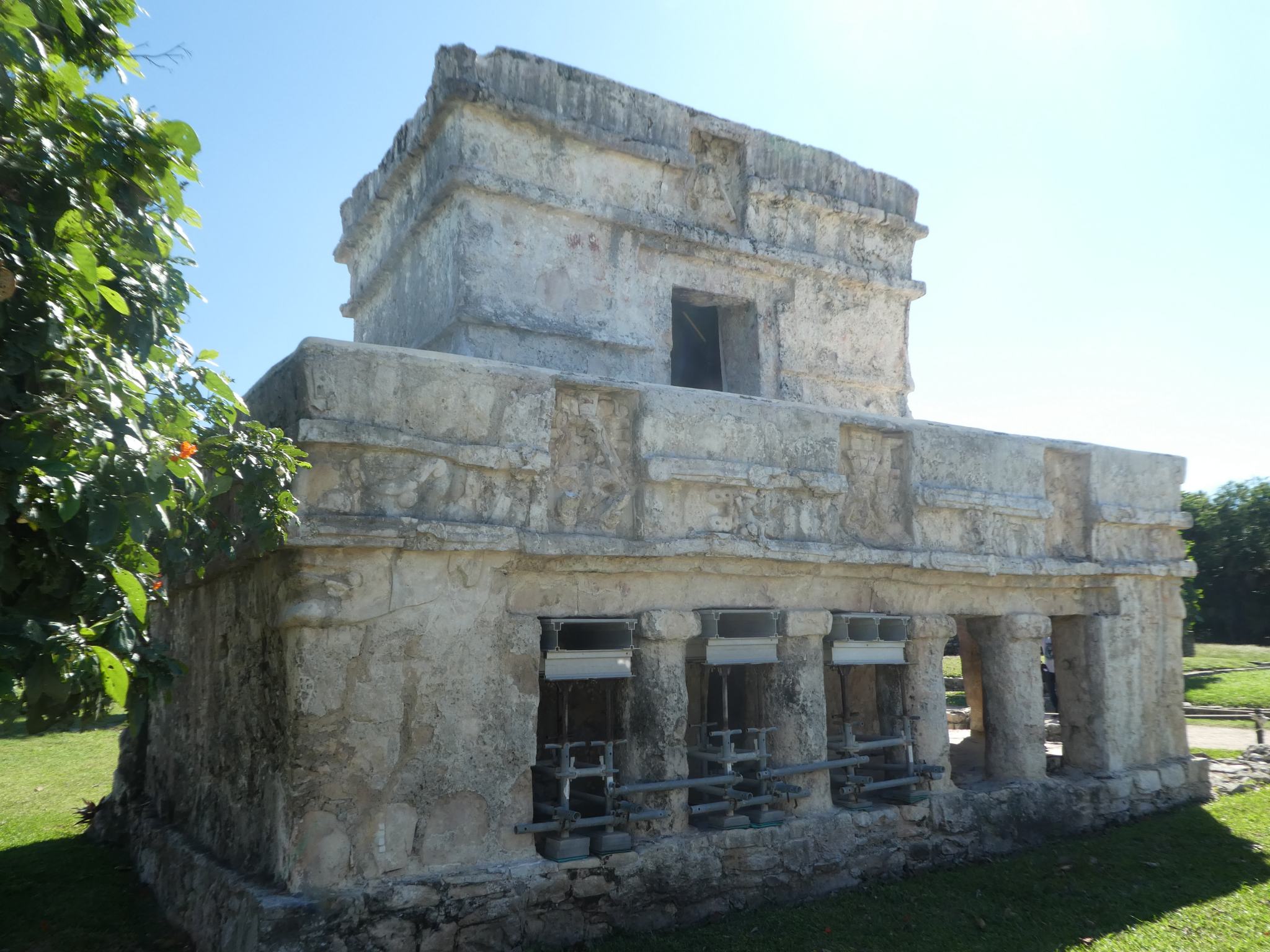 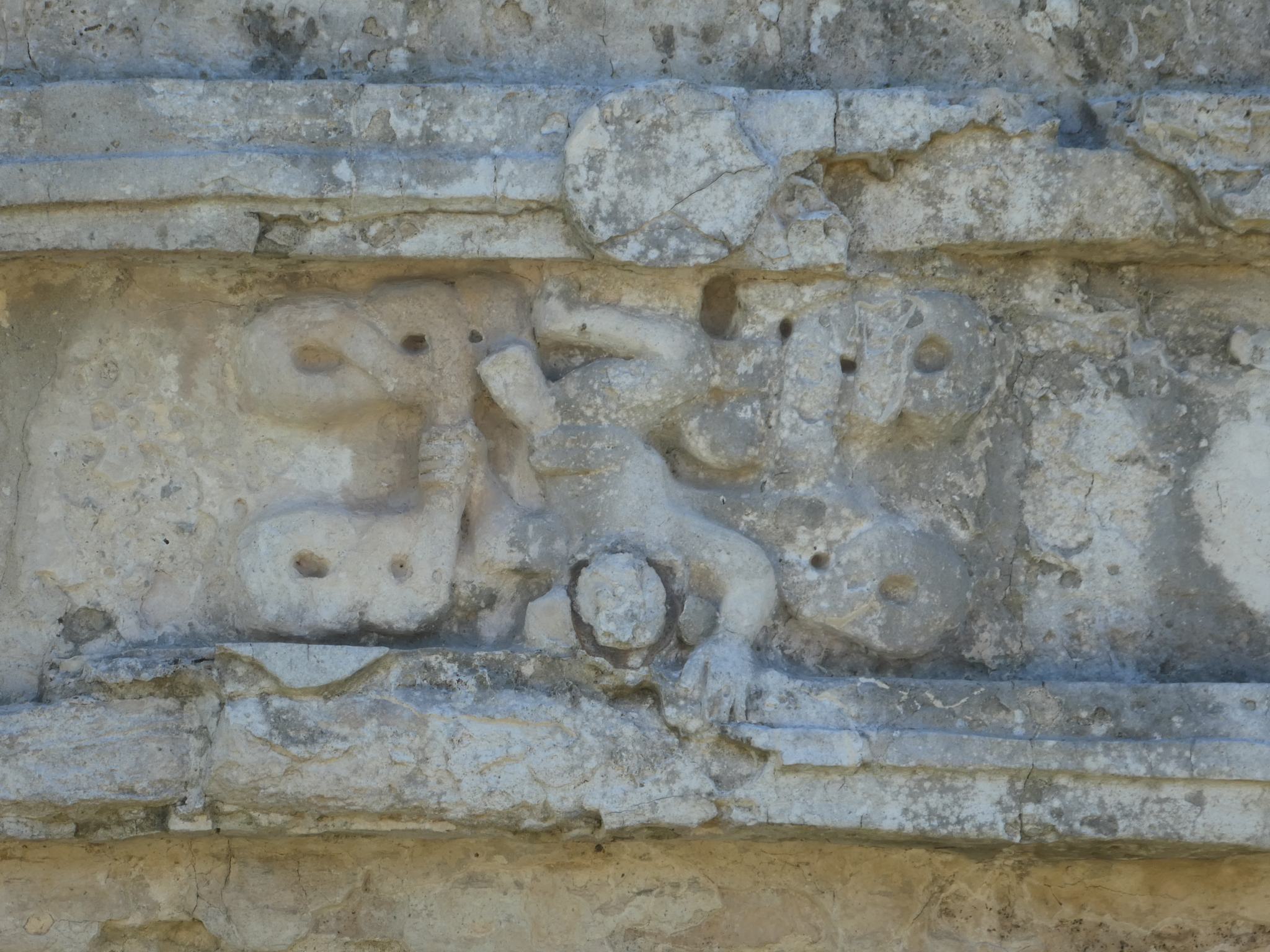 He’s also diving down from under the eaves above the central entrance to El Palacio (the Great Palace).  This was the home of the so called Halach Uinoc, or Great Lord and his family. 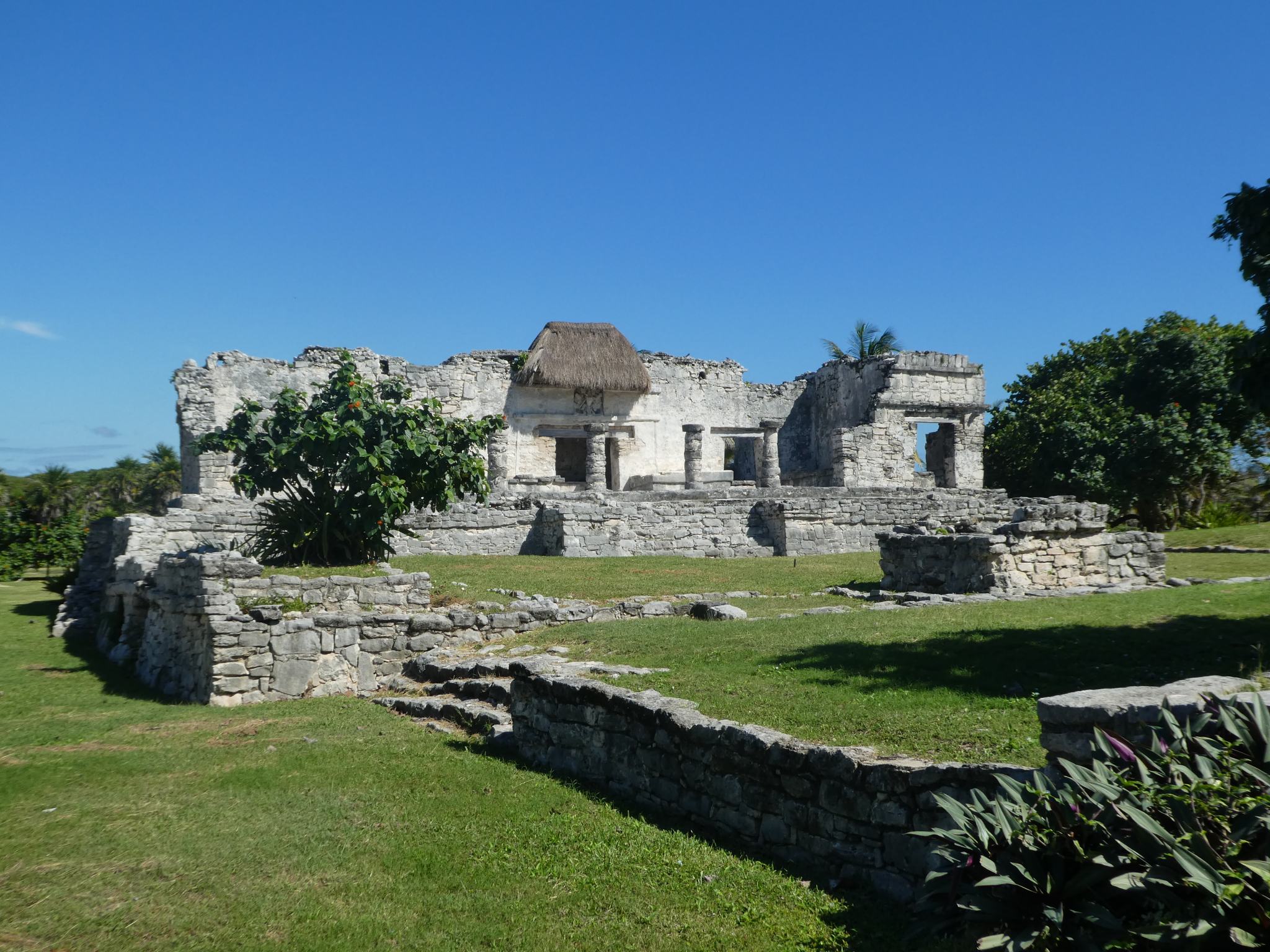 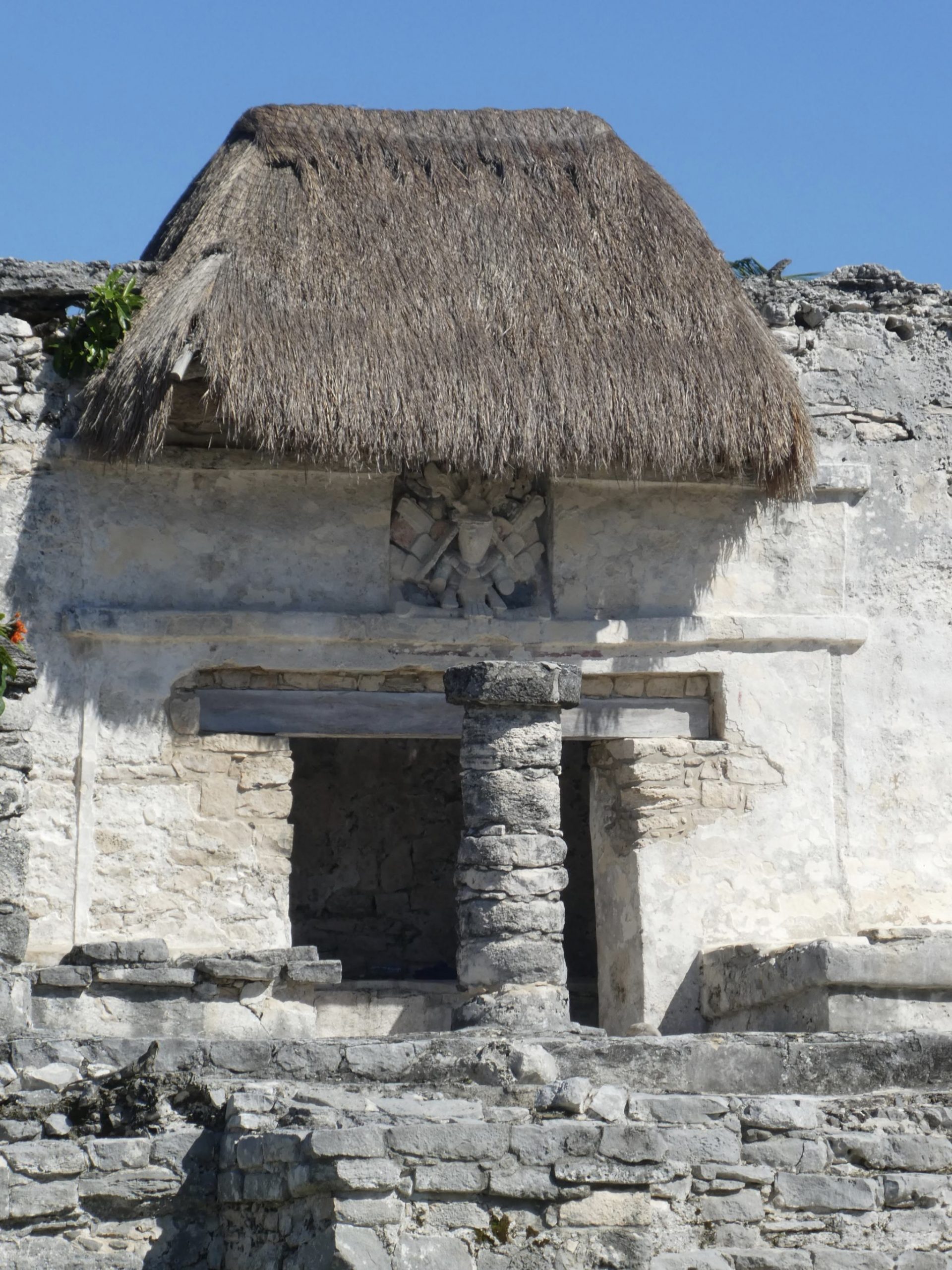 These days the site is home to a large number of iguanas, who were out warming up in the sun. 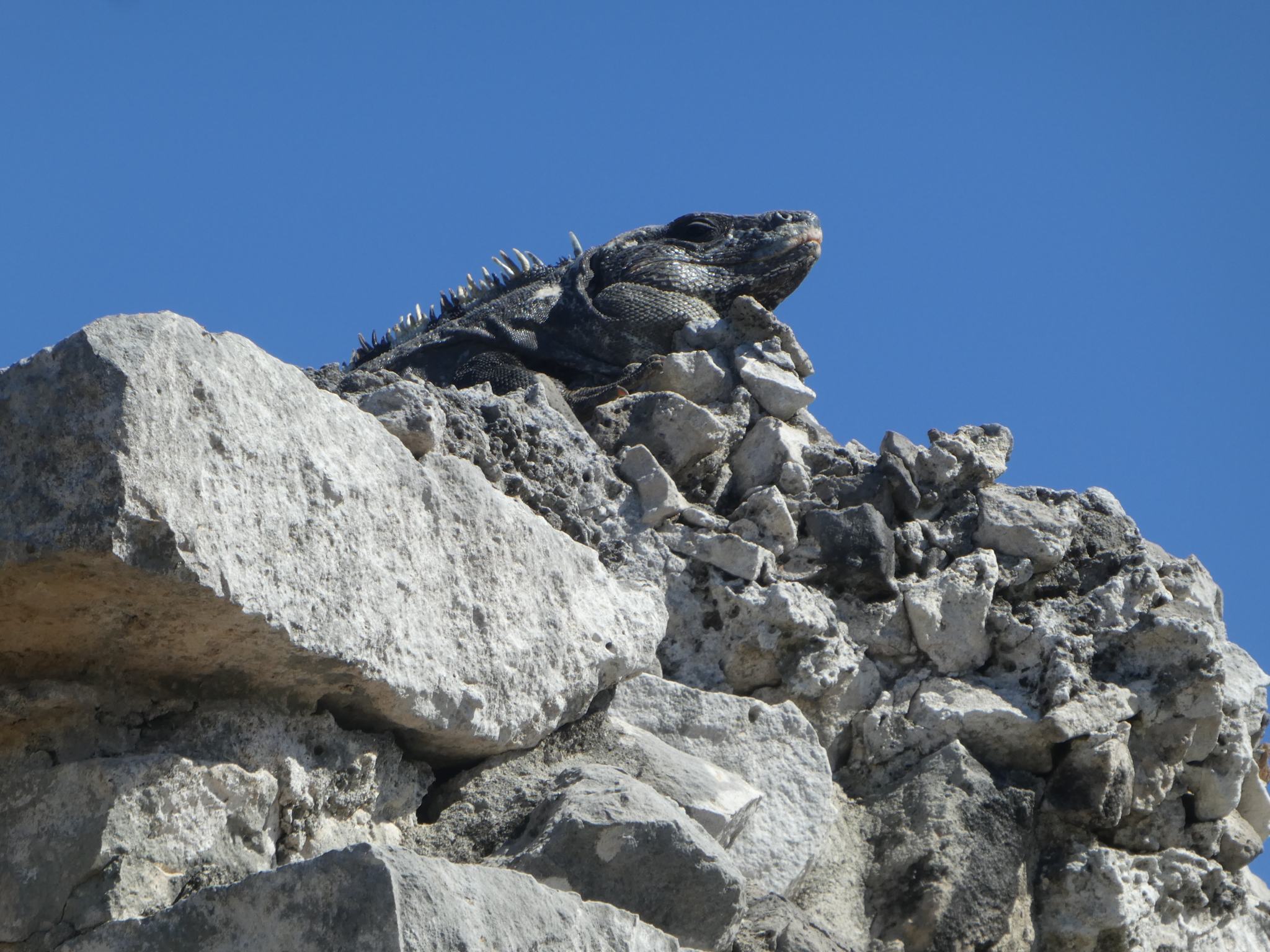 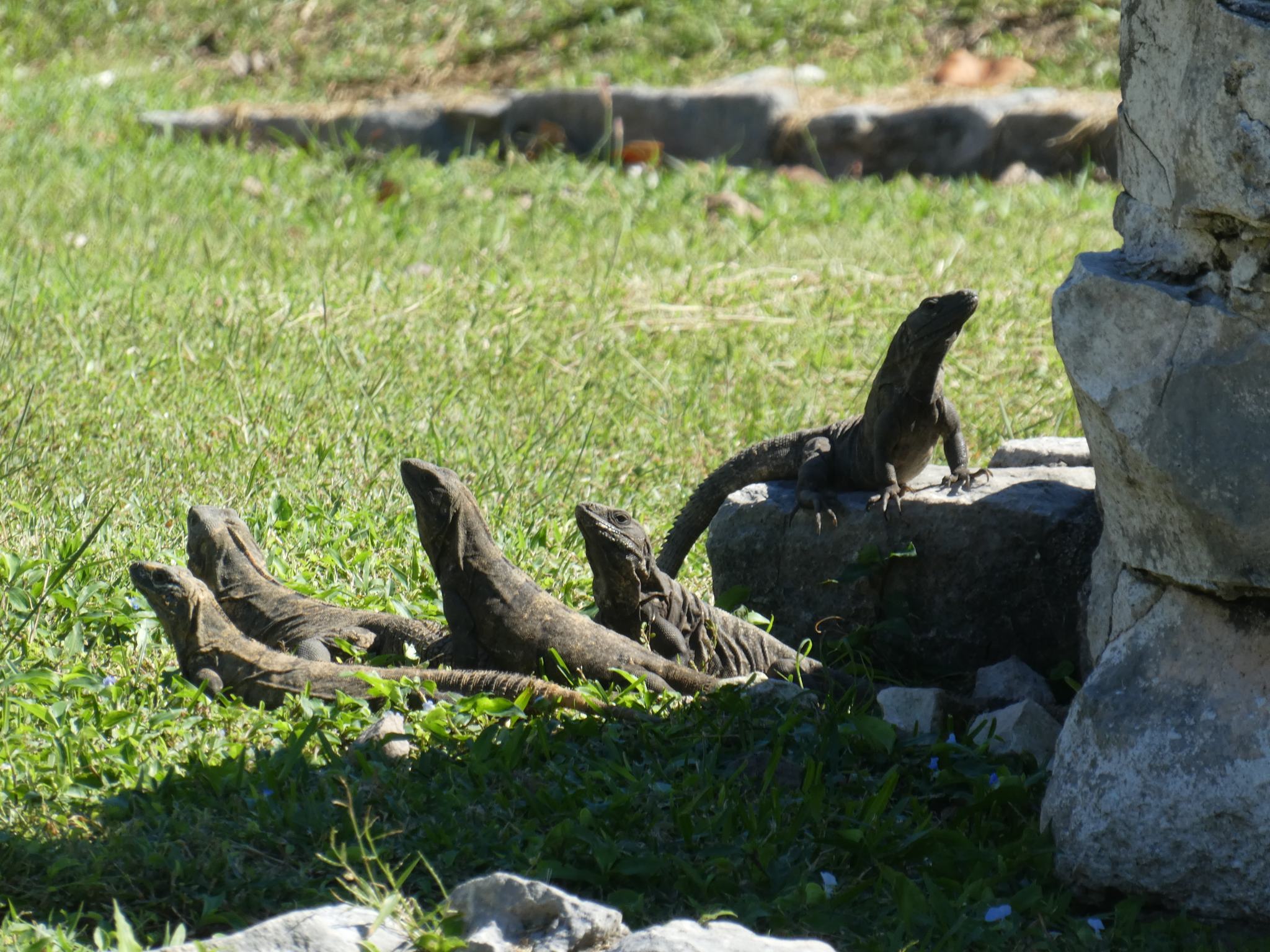 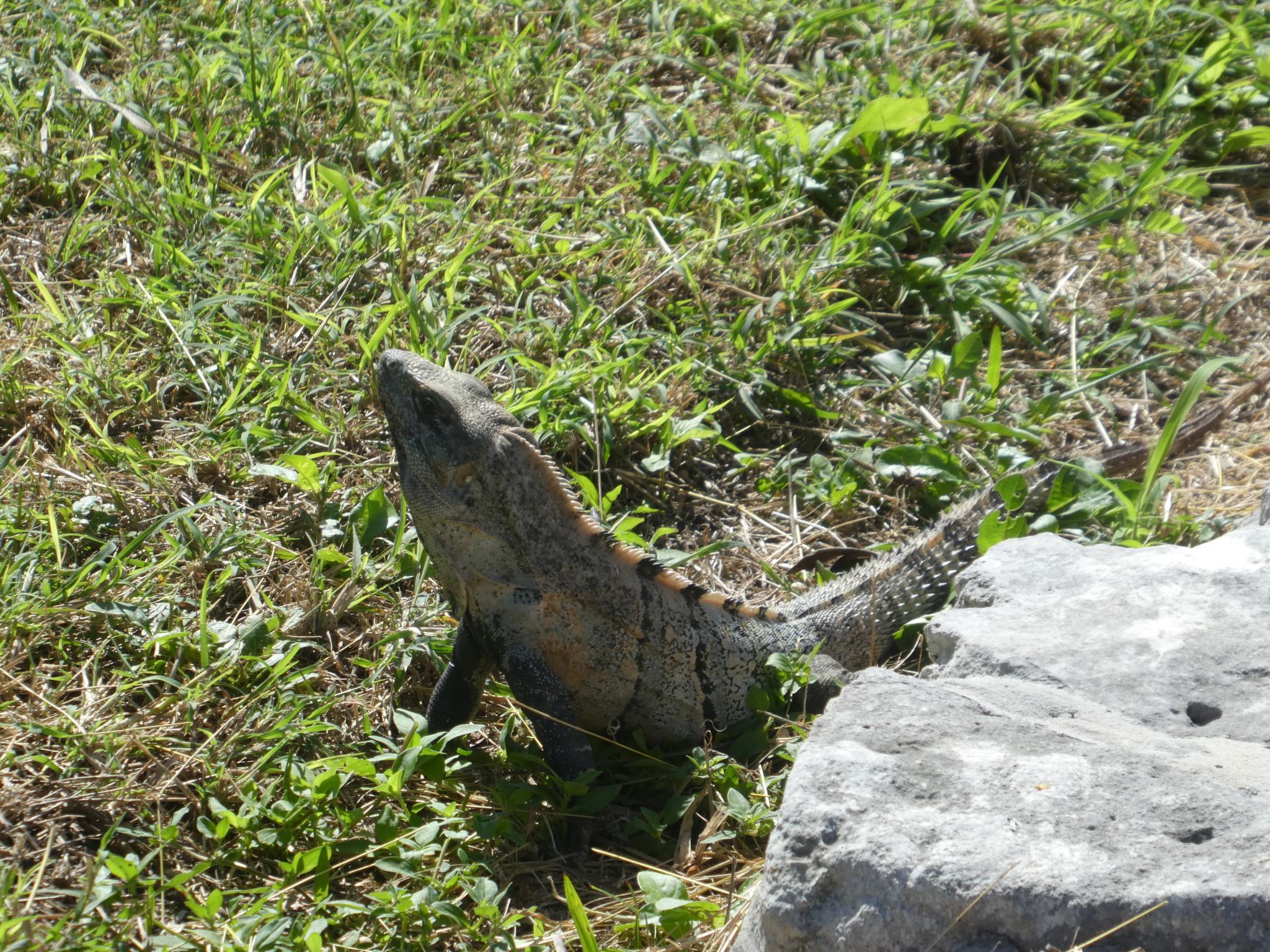 And just as we were leaving we spotted a coati in a tree.  The diurnal, semi-arboreal white-nosed coati is also known as the Mexican raccoon or, ever more cute, the ‘snookum bear’. 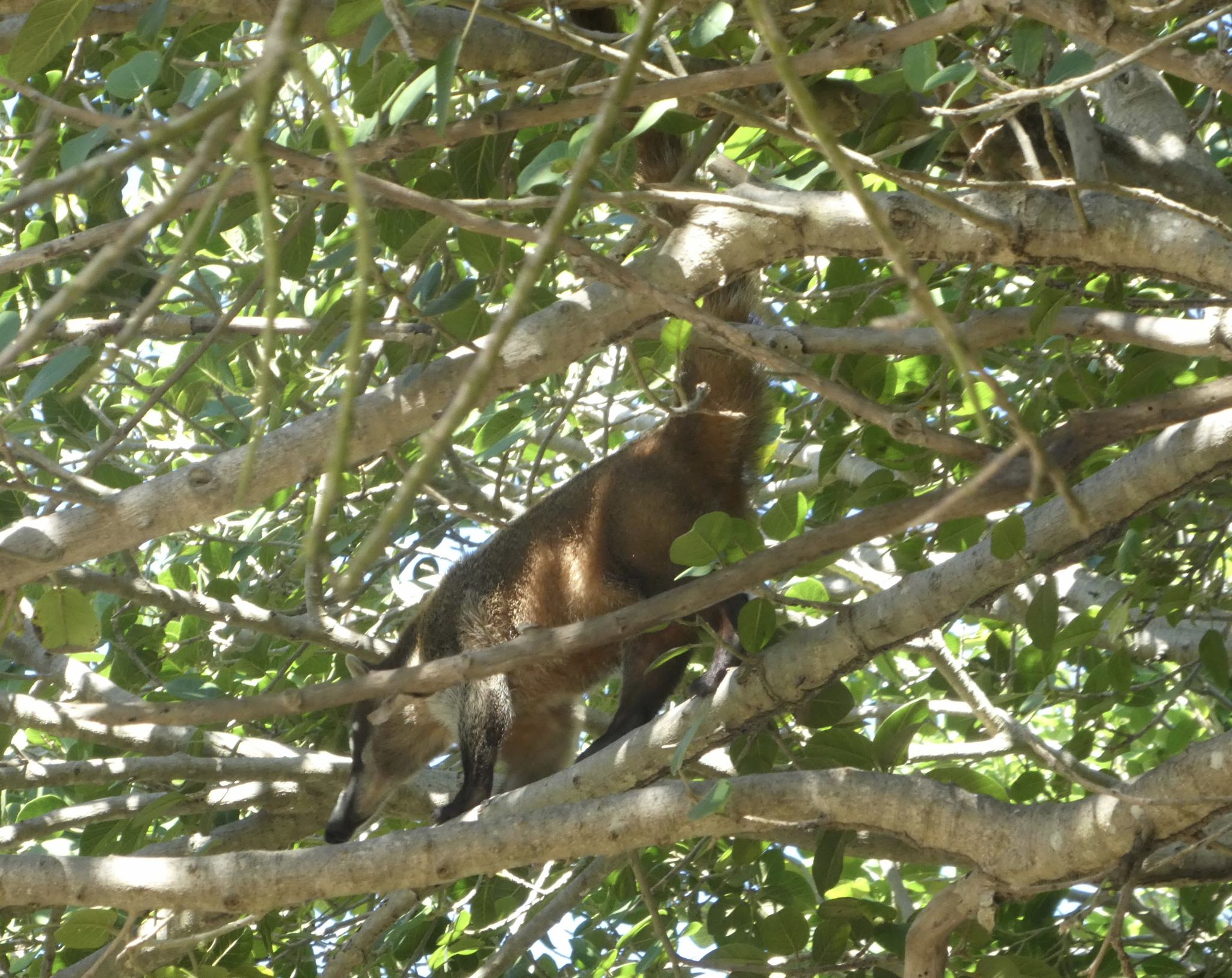 A cenote is a natural sinkhole caused when a limestone bedrock collapses, exposing groundwater underneath.  In other words, the collapse of the bedrock causes a hole to open up at the bottom of which is a pool or flow of groundwater.

There are countless cenotes in the Yucatan Peninsula, many of which lead into cave systems filled with water, usually rainwater which has seeped through the somewhat porous limestone.

The water in the cenotes is usually crystal clear because the water enters the system slowly and with almost no particulate matter.  And when the cave system is rock, there’s not much silt on the bottom.

Many cenotes around Tulum are open for swimming.  It’s not dissimilar to swimming in any other waterhole.  But in several of them divers have explored the cave system to which the cenote leads, and it’s possible to enter the cenote pool, drop down and scuba through the caves.

Cenote Dos Ojos (Two Eyes) is part of an extensive flooded cave system which extends all the way to the sea.  So far 82km, with 28 sinkhole entrances, have been explored.  It one of the ten longest underwater cave systems discovered to date in the world.

The name Dos Ojos refers to two cenotes near to each other accessing the one cave system, which are said to resemble two large eyes peering into the abyss below.  We did two dives here and it was an amazing experience.

It was totally unlike diving in the sea for so many reasons.  There’s no current.  Visibility is limited only by available light and not water clarity – the water is absolutely colourless. Buoyancy is different because it’s fresh water.

And it’s psychologically different.  You are in a cave system for 45 minutes each dive – you can’t just swim for the surface if something goes wrong.

It was just the two of us and our guide, and the fact that he carried an extra tank ‘just in case’ was reassuring, although it highlights that cave diving has a whole set of risks of its own.  We were glad he waited until afterwards to tell us about a guy who died not so long ago after getting lost in there.  Ironically, the poor fellow actually found an exit point but then died on the ground nearby from a heart attack, likely from the stress of thinking he was going to die in the water.

Once you mentally get on top of things, diving in the cenote was a really enjoyable and unique experience.  It was very easy diving with no current or surge.  Perfect visibility and lots to see.   The terrain is like being in a cave – stalactites, stalagmites etc – but underwater.

In places you can see patches of sunlight above where there are holes to the surface.  In other sections it’s dark and you move through using a torch.  On one dive we popped up into another cave which is not completely filled with water, and on the other dive we finned under the second ‘eye’.

We don’t have a waterproof camera so we couldn’t take any photos, so here’s some we lifted from the internet.  The first one is the access point through the cenote, and the others are the underwater terrain through the cave system.  And yes, it really does look like this. 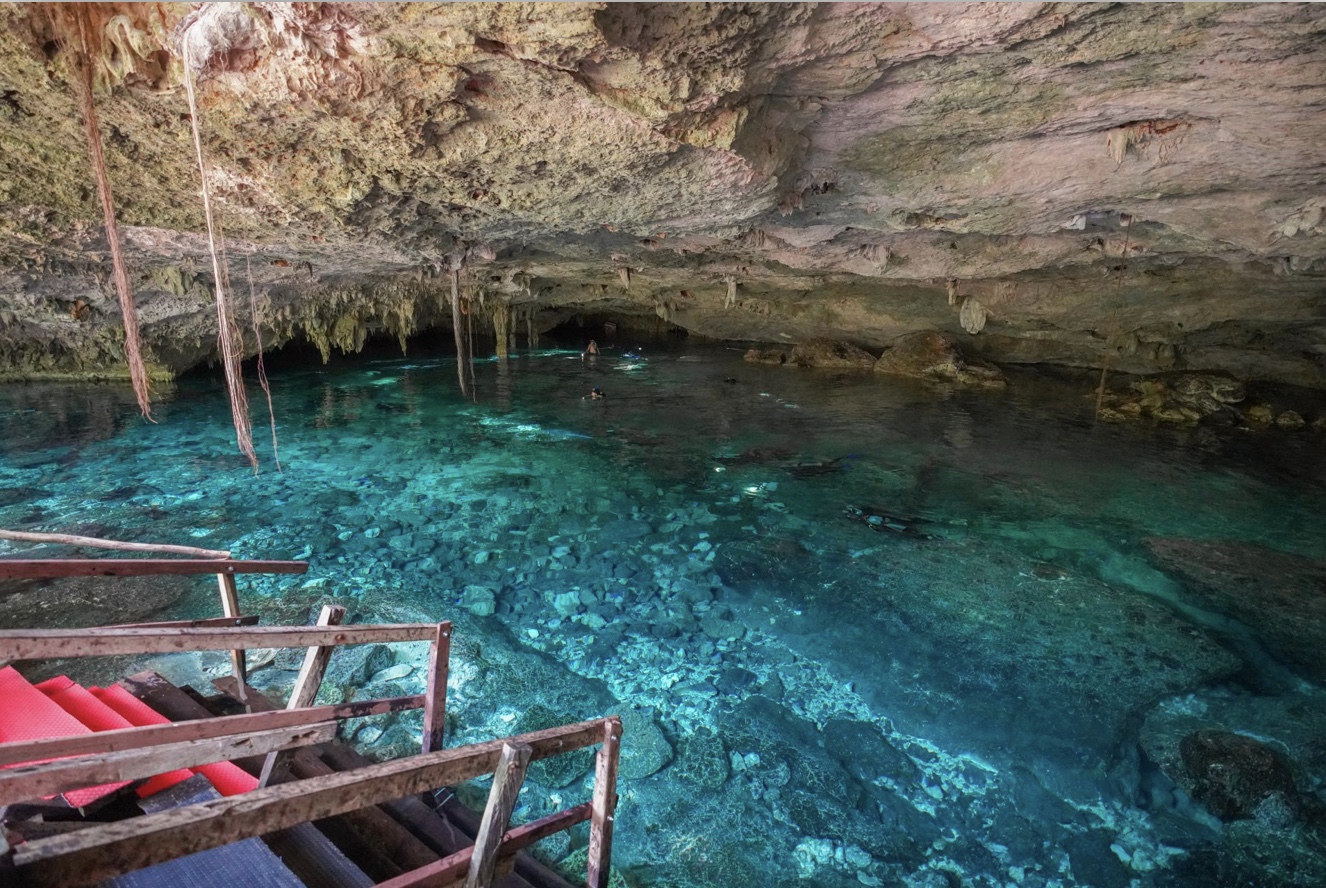 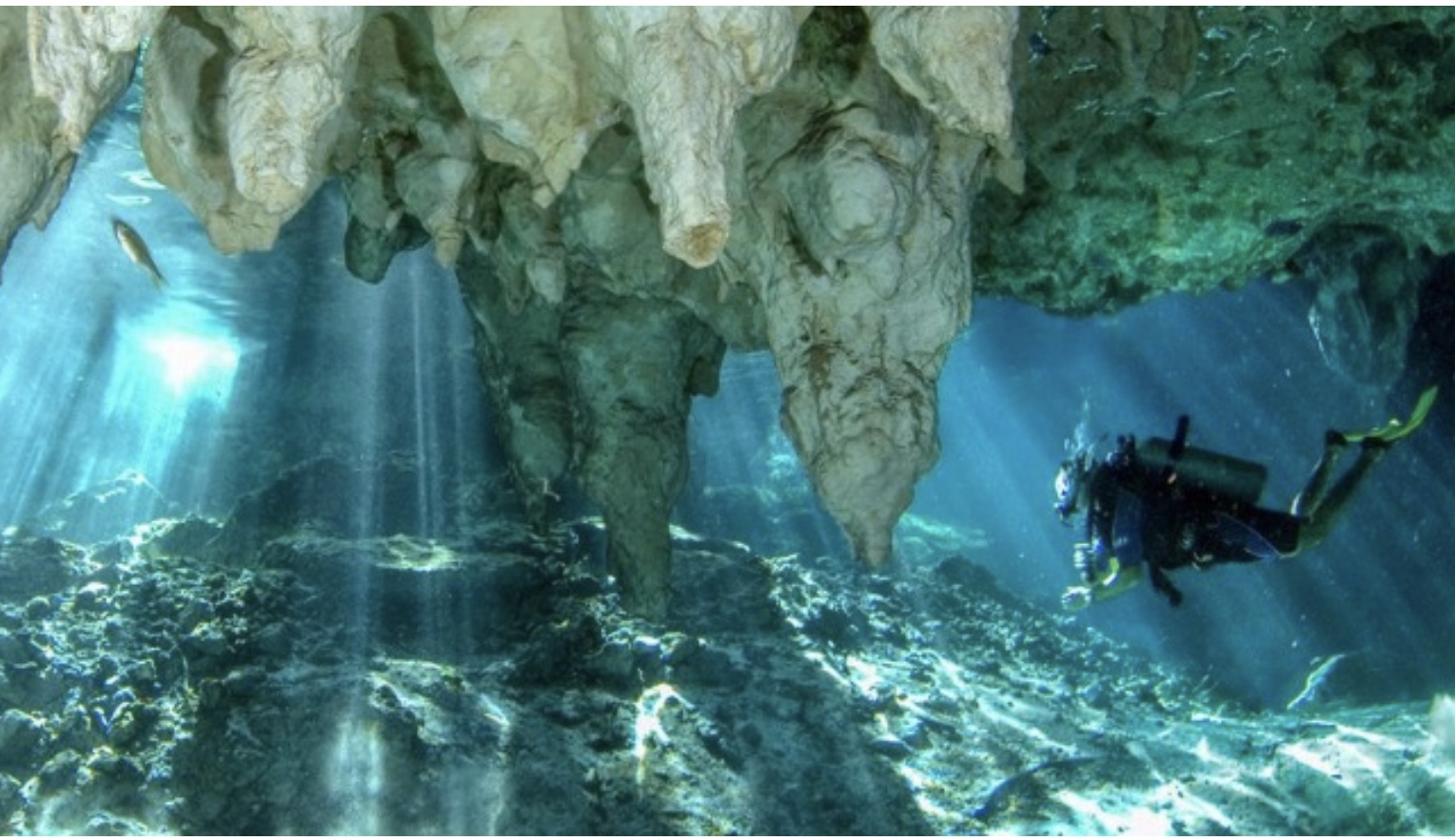 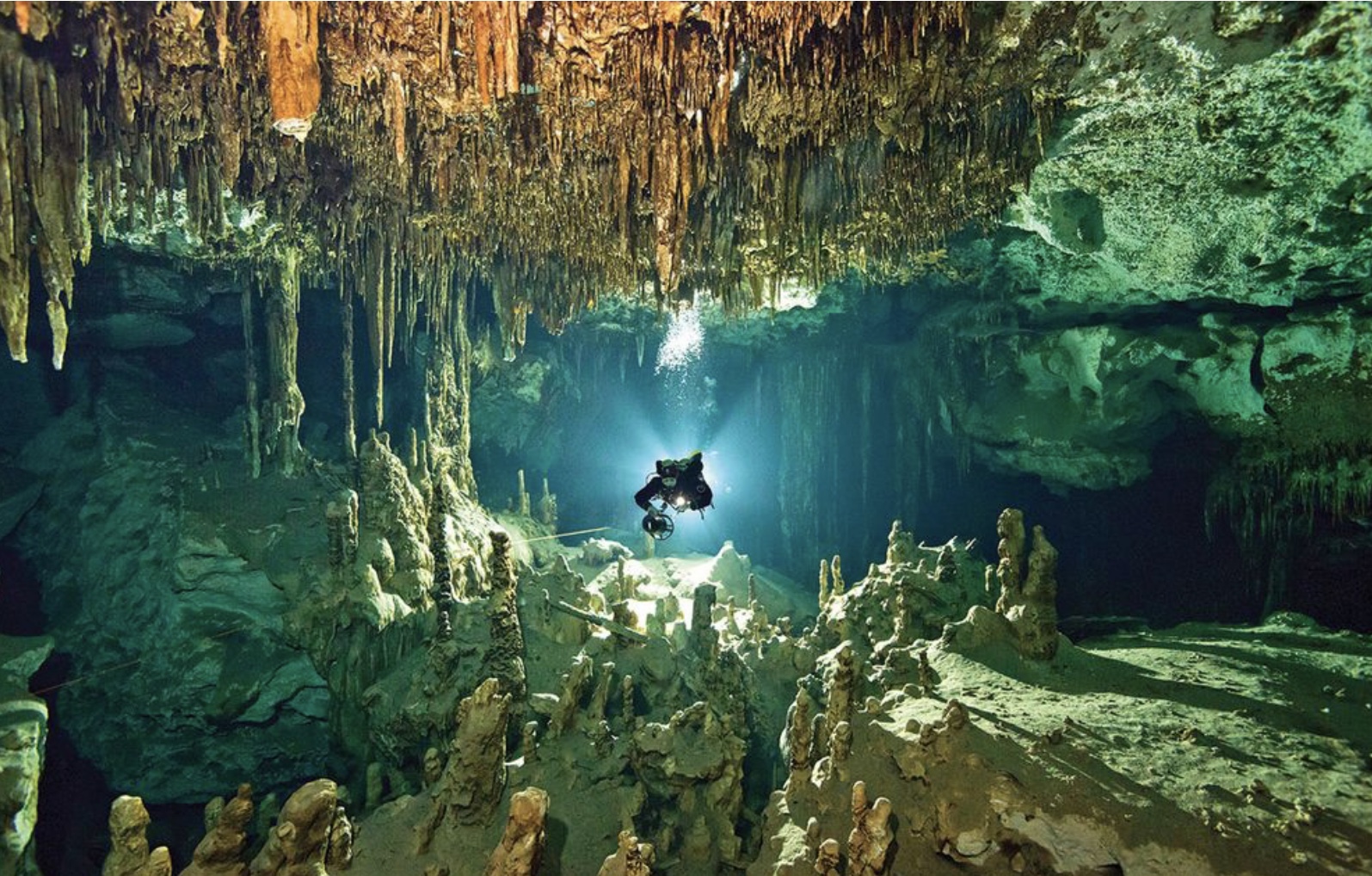