Antigua Guatemala means “Old Guatemala”.  The city was established by Spanish conquistadors in 1573 as the third capital of Spanish-controlled Guatemala.  The first and second capitals had been abandoned due to constant Mayan uprisings and earthquakes respectively.

For more than 200 years it was the seat of government of the (Spanish) kingdom of Guatemala which encompassed what is now Guatemala, Belize, El Salvador, Honduras, Nicaragua, Costa Rica and the state of Chiapas in today’s Mexico.  In effect, it was the capital of most of Central America.

Where conquistadors went, religious orders followed.  Antigua became a major centre for monastic orders who established several large ecclesiastical complexes, schools, hospitals and, in the case of the Jesuits, even a university.

It perhaps wasn’t the best choice of site for a major city, as it’s surrounded by three volcanoes and is in a major earthquake zone.  Buildings in the city were destroyed by earthquakes and rebuilt several times in the 1600s and 1700s.  Finally, after a significant earthquake in 1773 destroyed much of the city, a Royal Decree was issued by the Spanish crown ordering the city be abandoned and the capital moved to its current site, Guatemala City.

Not everyone obeyed, and the city of Antigua limped on.  But residing there was technically illegal, and there was no money for restorations, so a number of the previously magnificent churches and monasteries stood in ruin, untouched for a couple more centuries.  The city fell into a state of desperate poverty.  However in 1944, the city was declared a National Monument and slowly many old areas have been regenerated.  In 1979 the city was listed by UNESCO as a world heritage site.

There have been earthquakes since the big ones in the 1700s, but none have been as devastating.  Most of the existing buildings were constructed in the 1600s and 1700s, or are sympathetic reproductions of the Spanish colonial style of those days. 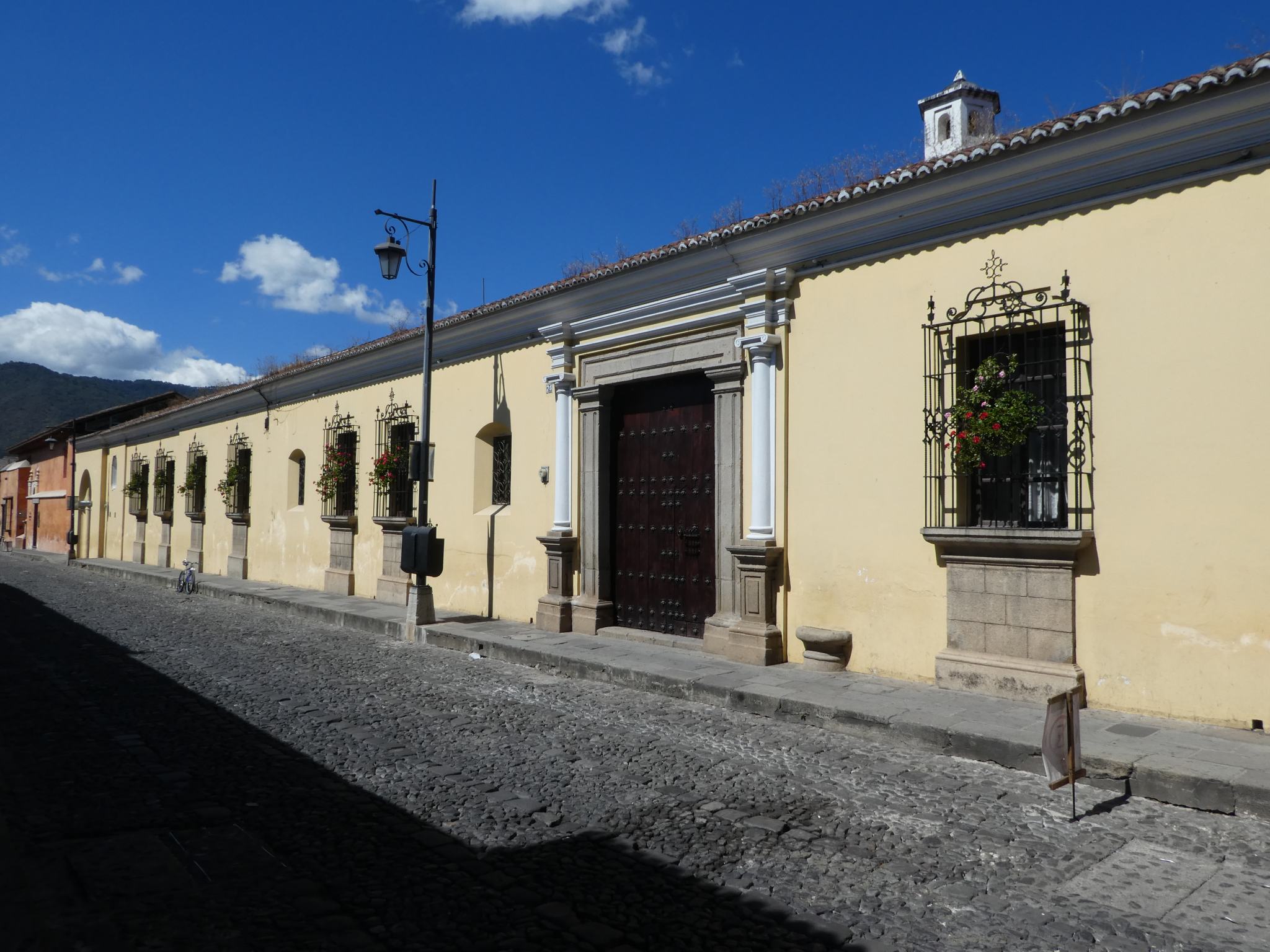 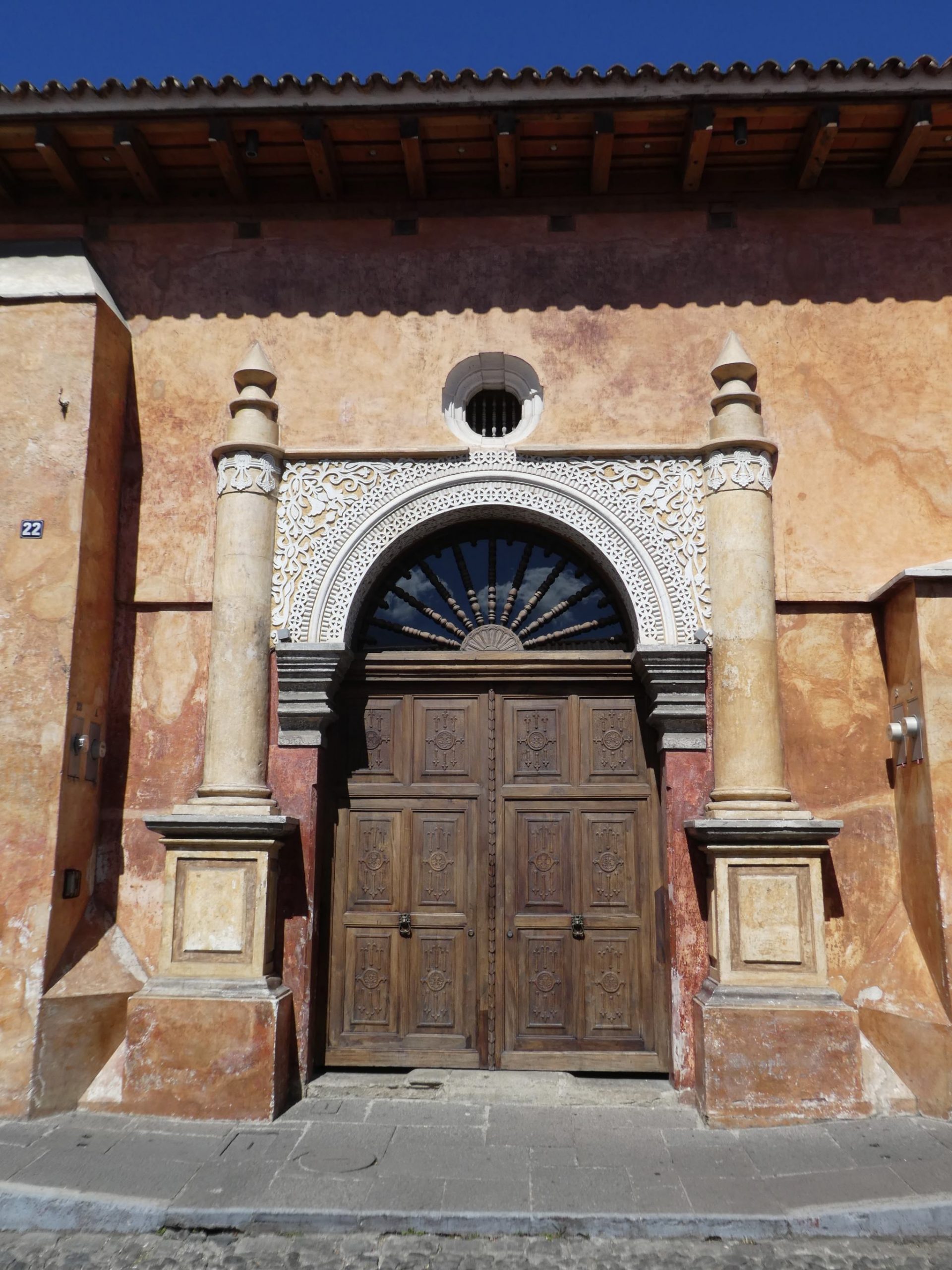 Thanks to the city’s World Heritage listing, town planning regulations are strict.  As a ‘hot’ travel destination, Antigua has suffered the inevitable infiltration of generic fast food chains, but while there is a McDonalds here, you won’t see any golden arches – even international icons aren’t permitted to put their signage on the traditional facades or paint their premises in corporate colours that don’t suit the heritage of the city.  Walking around, what you will see is cobble stone streets, traditional stone pavements and traditionally styled and coloured buildings. 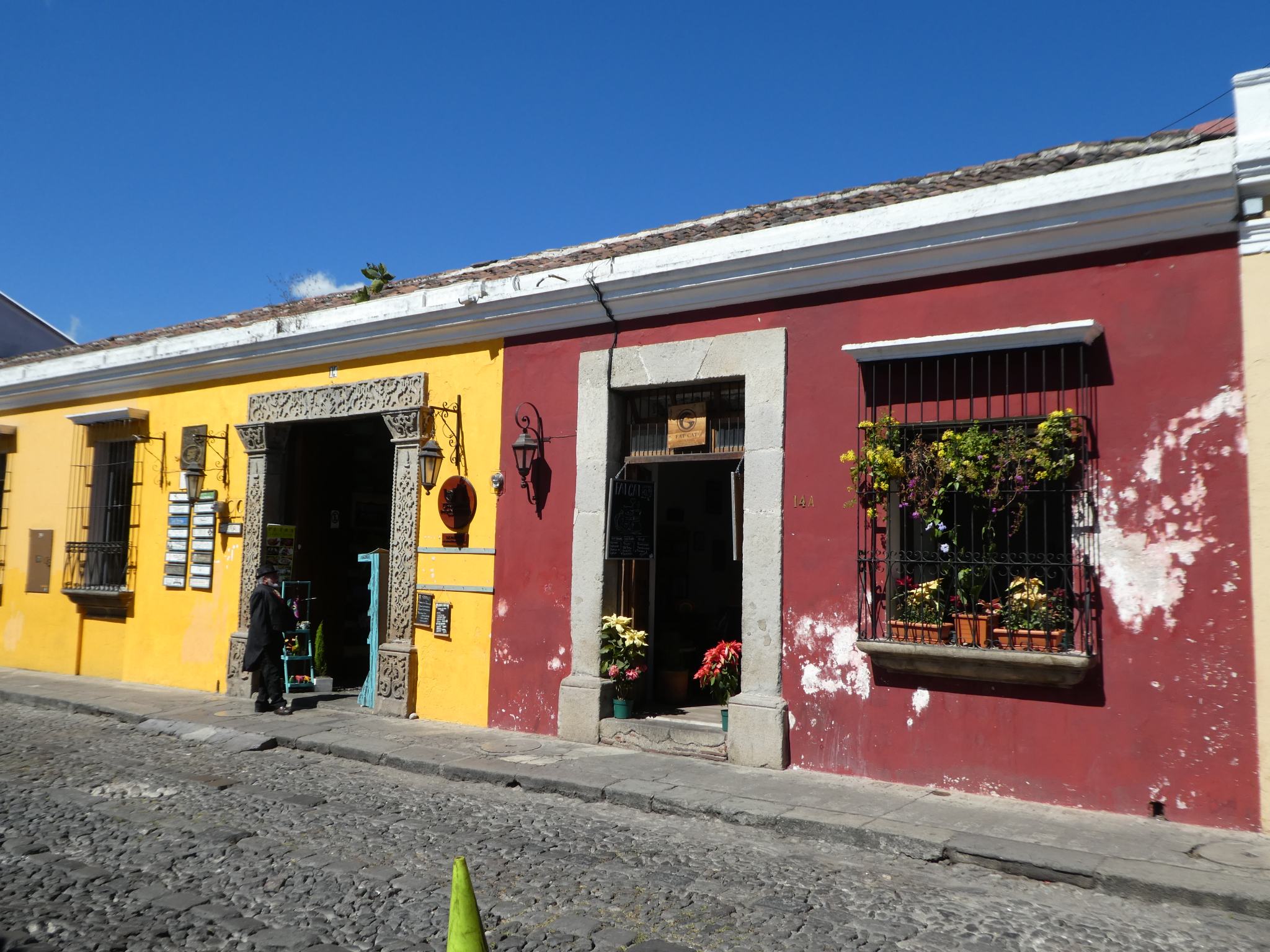 Antigua was a planned city and as such is an almost perfect grid street system centred around a main plaza, Parque Central.  The plaza is a green and shady place filled with locals and surrounded on all sides by colonial era buildings. 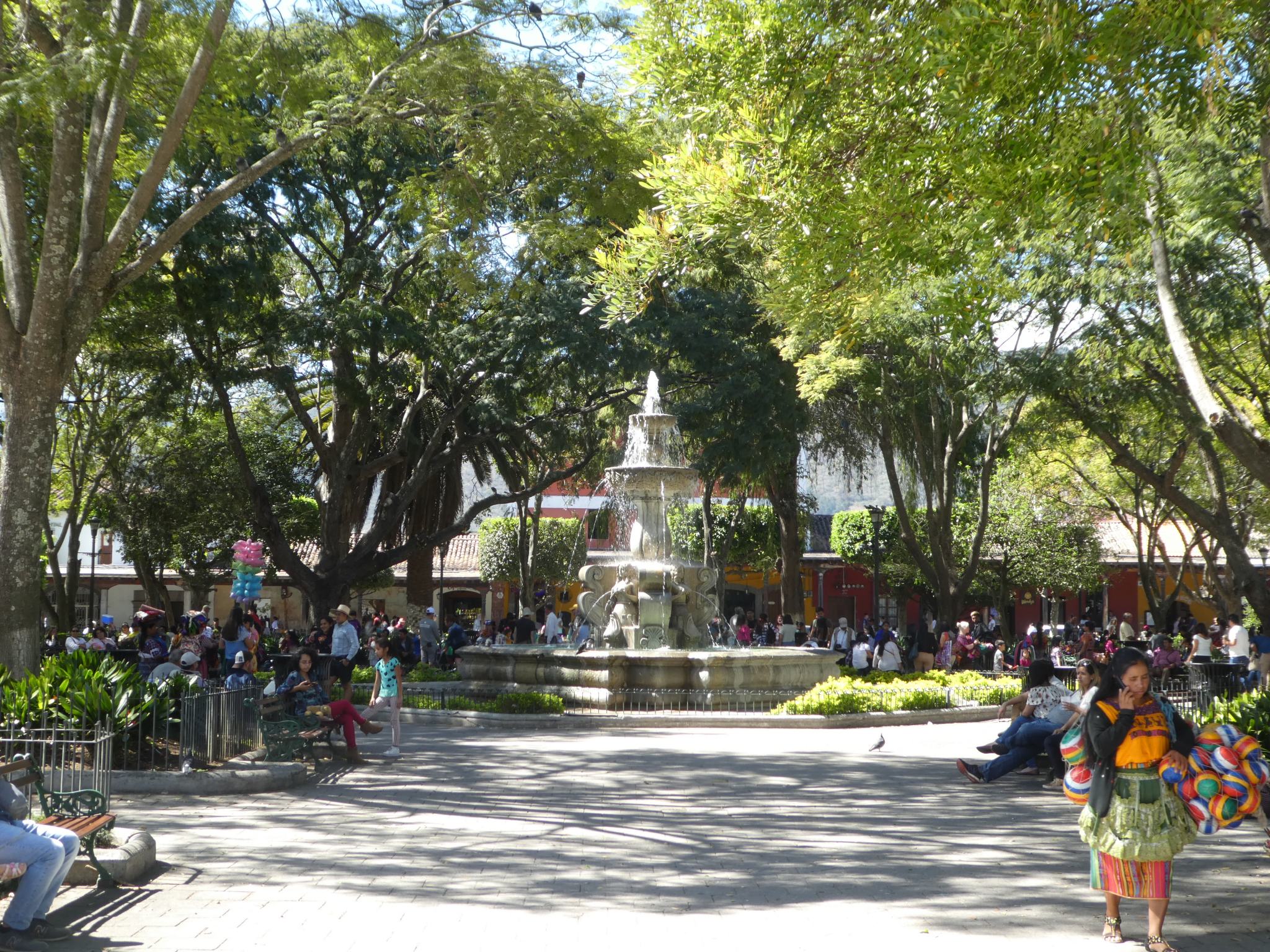 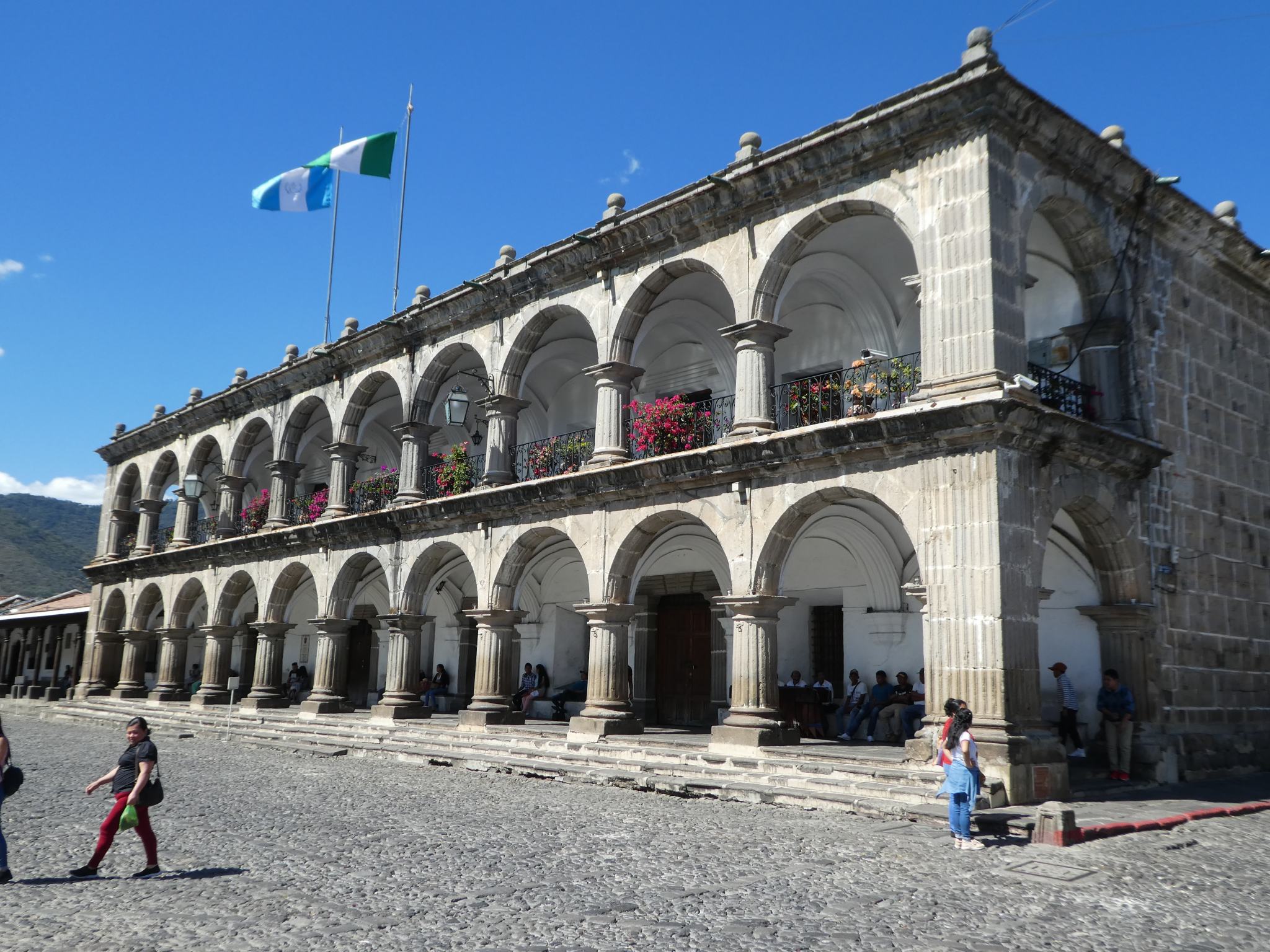 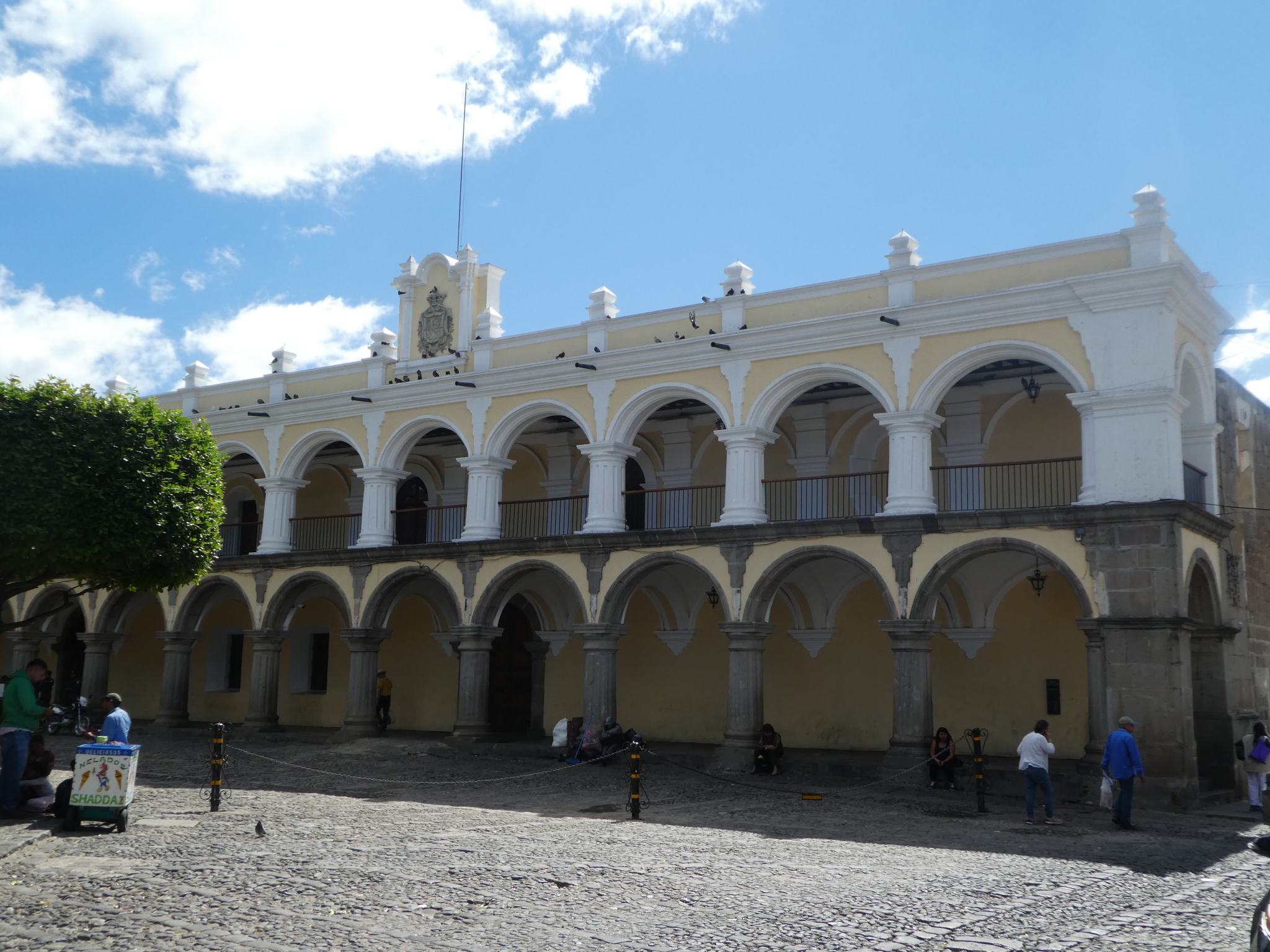 Quite a few of the old church ruins have been left as they are, or at least only cleared sufficiently to be safe.  They have become a tourist attraction in their own right. 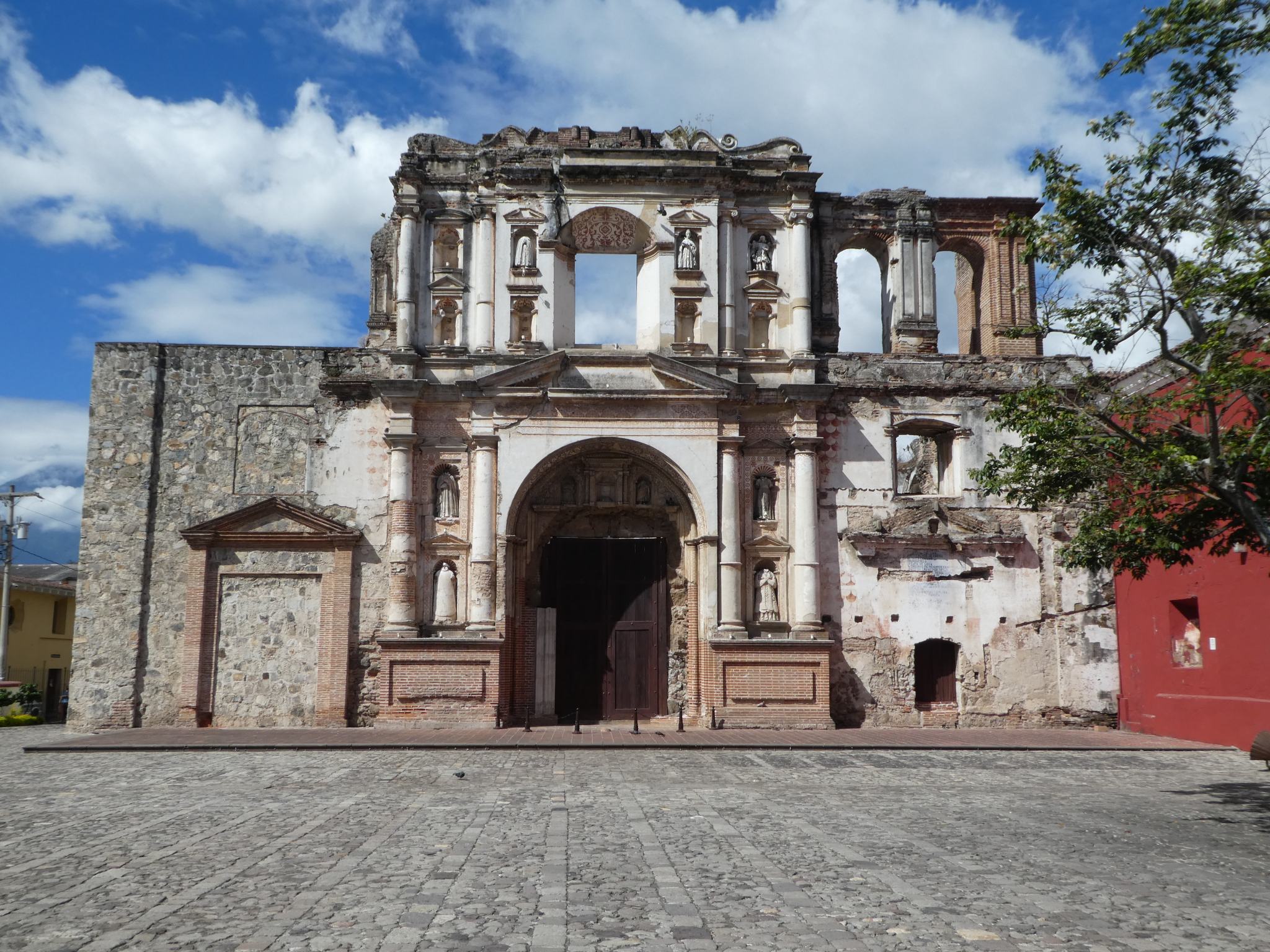 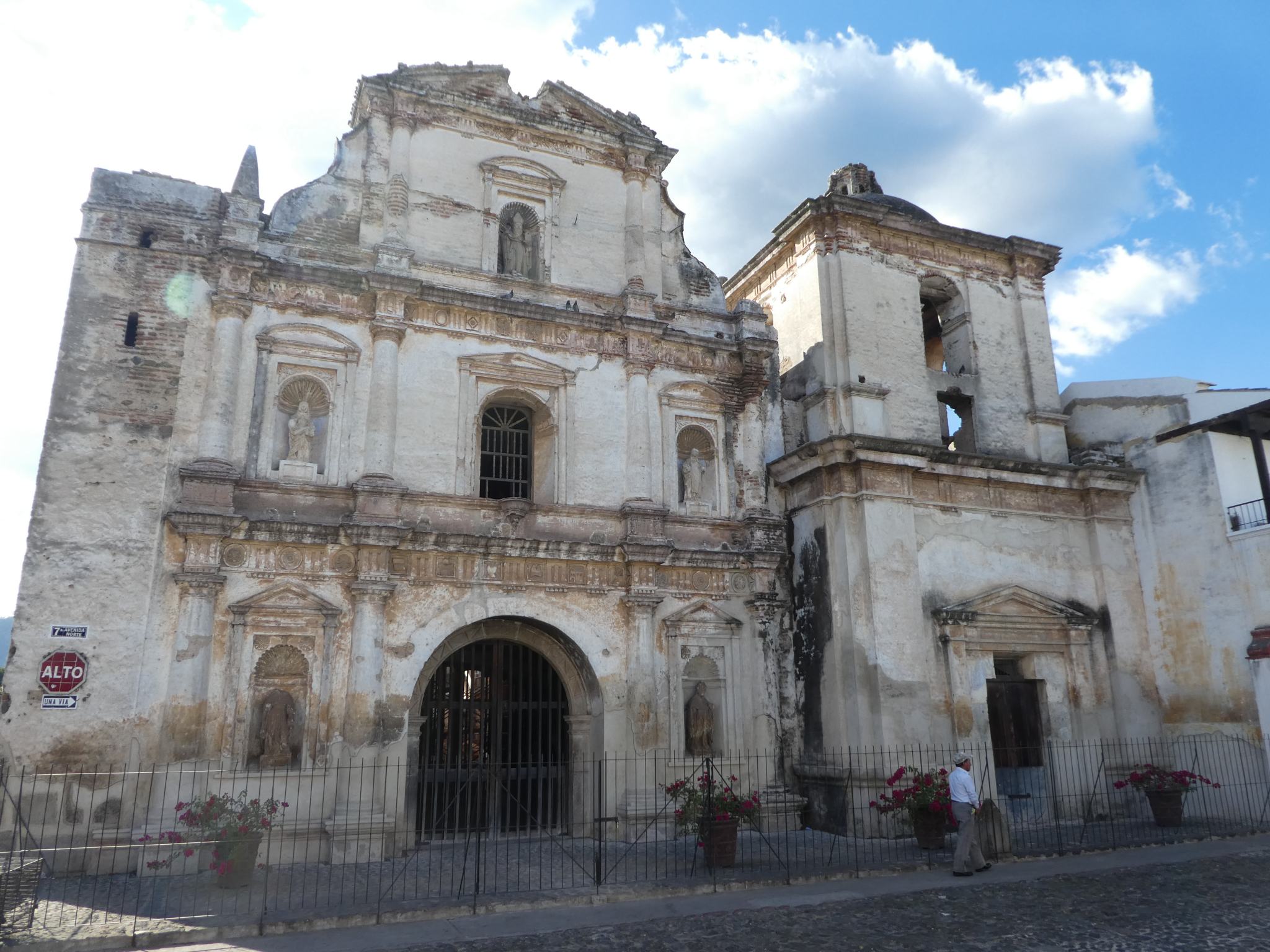 The Cathedral of Saint James was built in the mid 1500s and with a few renovations over the years, by 1743 it was one of the largest cathedrals in Central America.  It was all but destroyed in the 1771 earthquake.

From the outside you would think it’s been restored, but that’s an illusion.  Behind this immaculate facade is only a small church occupying a tiny part of the original.  The rest of the original cathedral is accessible from a side street, and it’s all ruins.  Still, the restored facade provides a pretty impressive photo location.  And a shady spot for roosting pigeons. 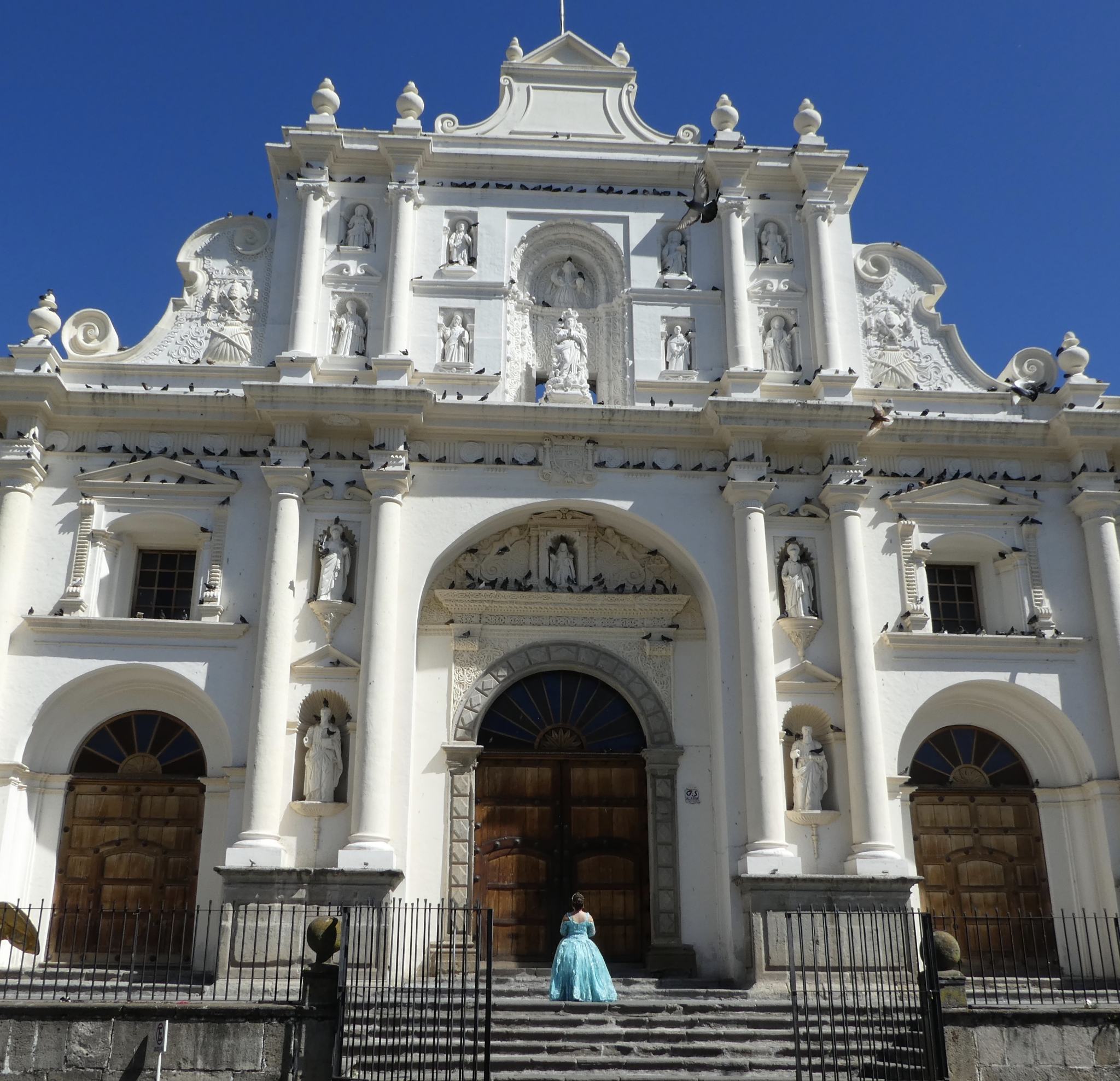 In great condition inside and out is the 1750s baroque masterpiece Iglesia La Merced.   It was built with extra thick walls to withstand earthquakes, and almost 300 years later, it’s still standing firm.  The surrounding plaza is a popular spot for locals to socialise. 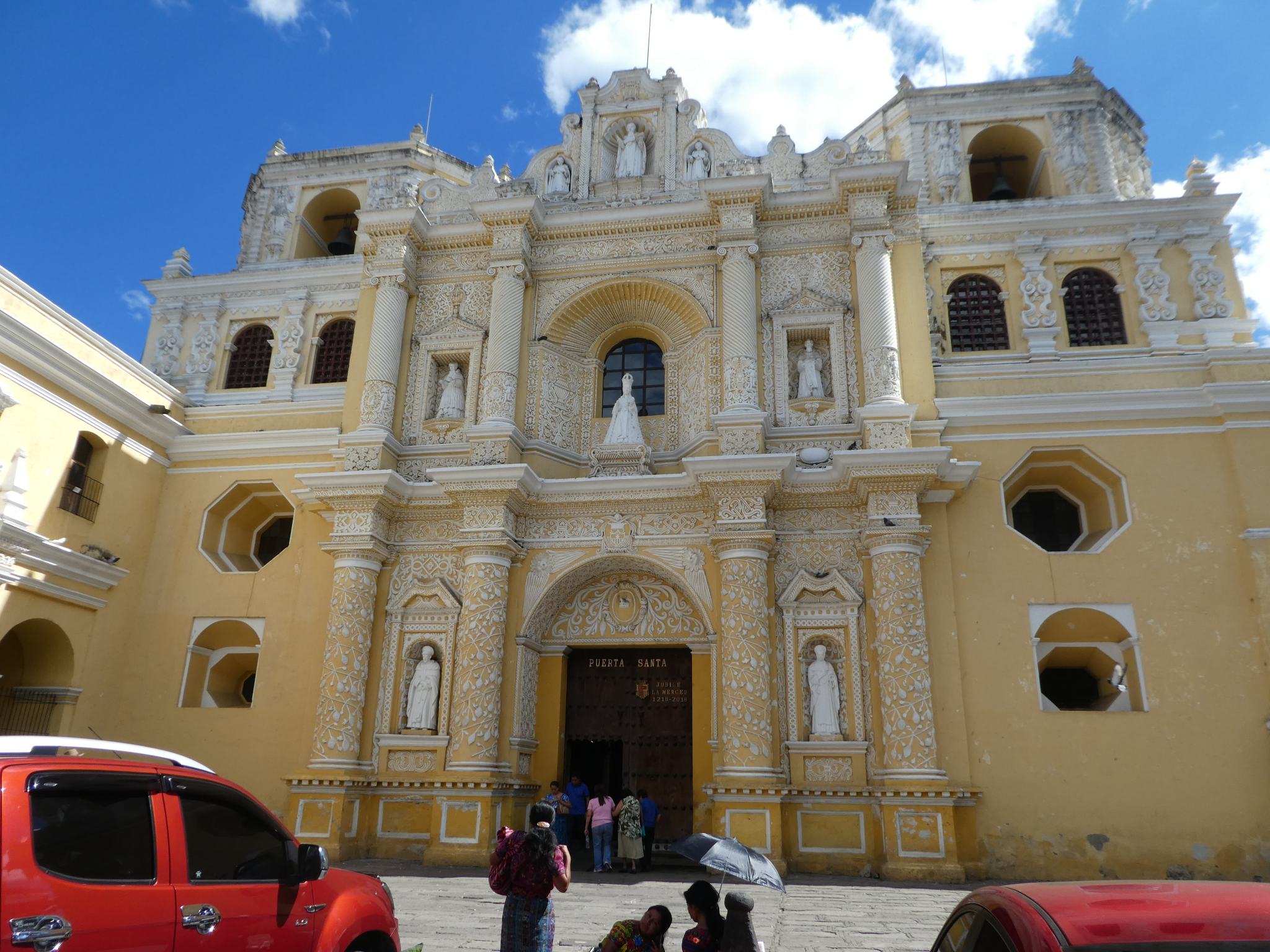 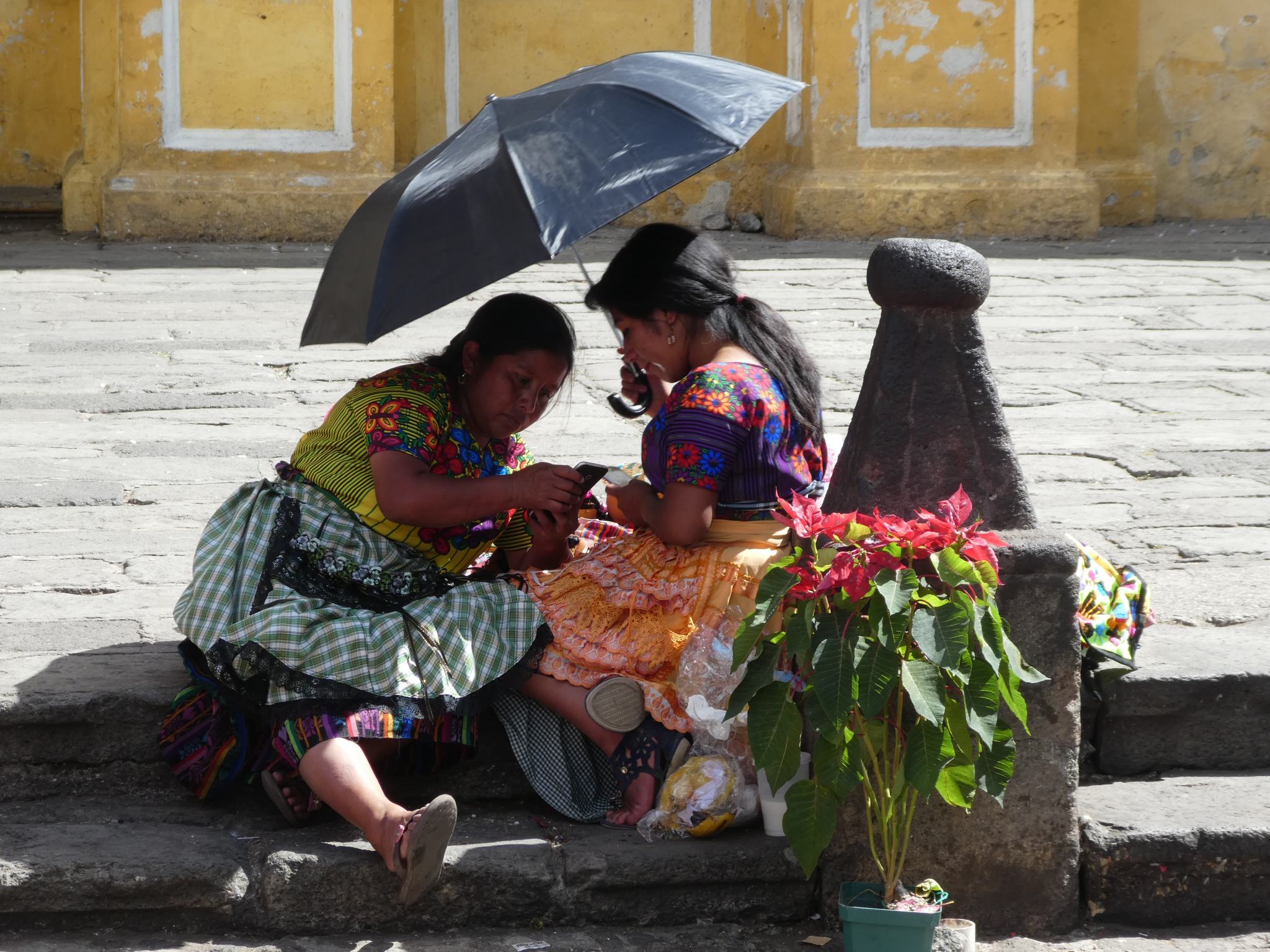 The austere life of some of the orders of nuns of the day included such strictures as not being allowed to drink chocolate.   Many were silent orders and even the more liberal ones maintained at least the illusion of absolute piety.  The Arco de Santa Catalina was built in 1694 to enable nuns from the Santa Catalina monastery to cross the street without being seen. 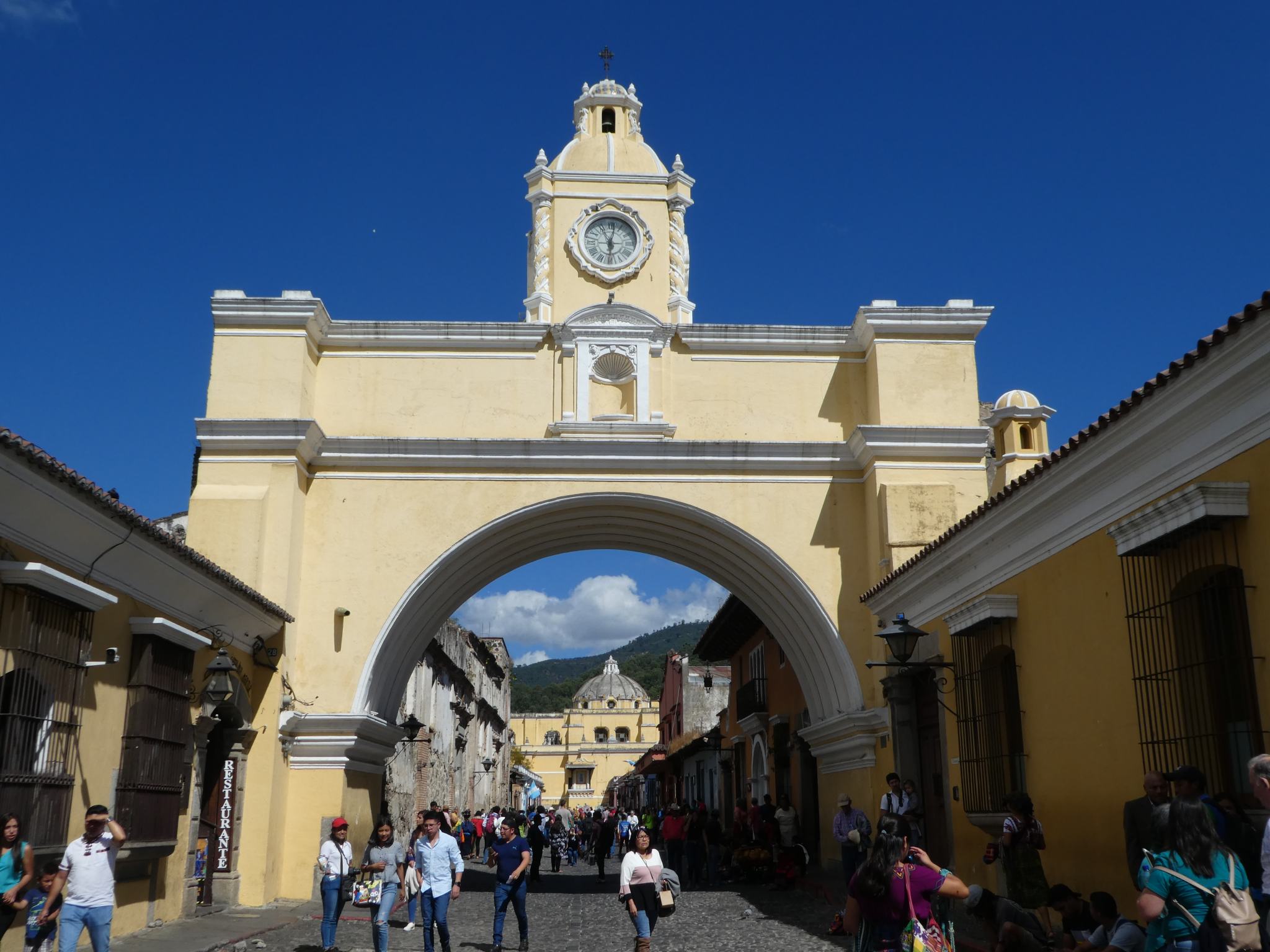 But earthquakes have a habit of revealing dirty little secrets.  In the ruins of the Capuchin monastery are underground tunnels linking the monks’ cells to those of the nuns.  Very naughty!

Some of the former monastic complexes have been repurposed as galleries or museums.  The most unusual is the former Santo Domingo monastery, once the largest and richest monastery in Antigua.  After being extensively damaged by three earthquakes in the 1700s, much of its stone work was looted for other building projects.  In the 1970s, the site was bought by an American archeologist who did extensive excavations of the ruins as well as using the property as a private residence.  Following a lot of rebuilding, it is now a boutique hotel but an archeological zone has been kept.  Some intact ruins, a restored cloister and a reconstruction of the monastery’s garden, as well as several museums, are open to the public. 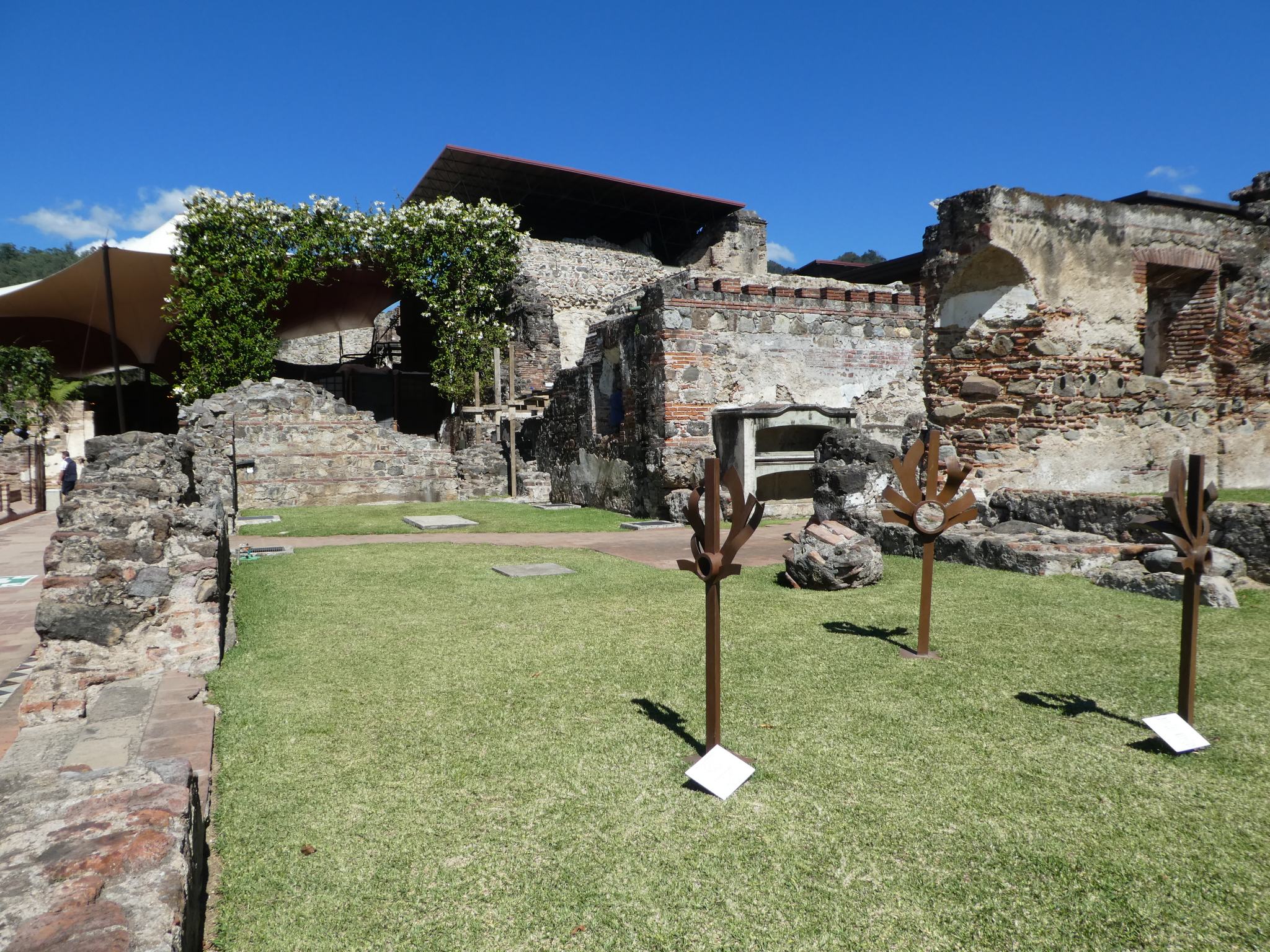 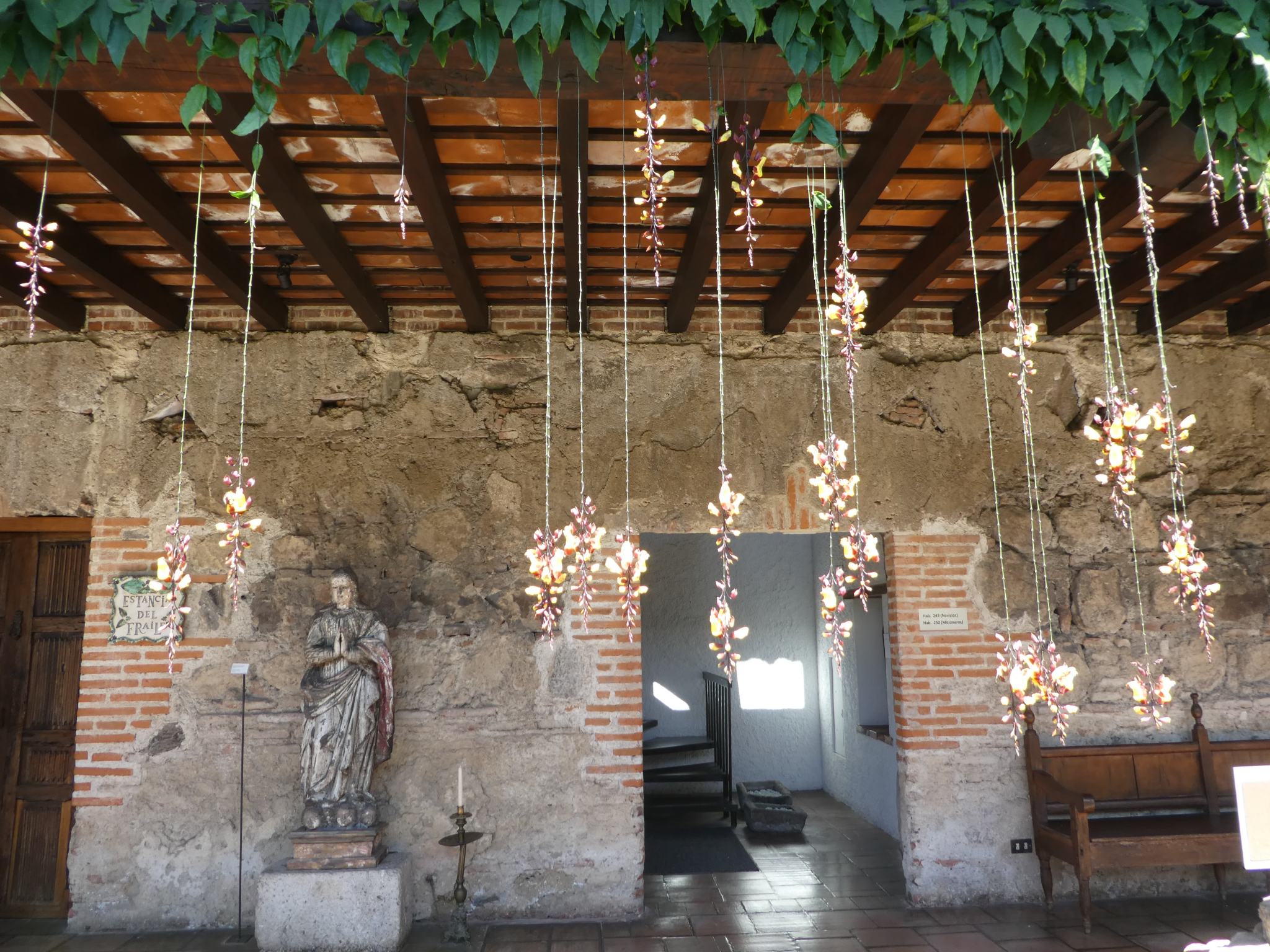 In a warren of shops next to the ruins of the Iglesia Del Carmen is a craft market filled with stalls selling textiles, leather goods, jade, handicrafts and tourist trinkets.  On Saturdays, even more vendors set up along the street outside. 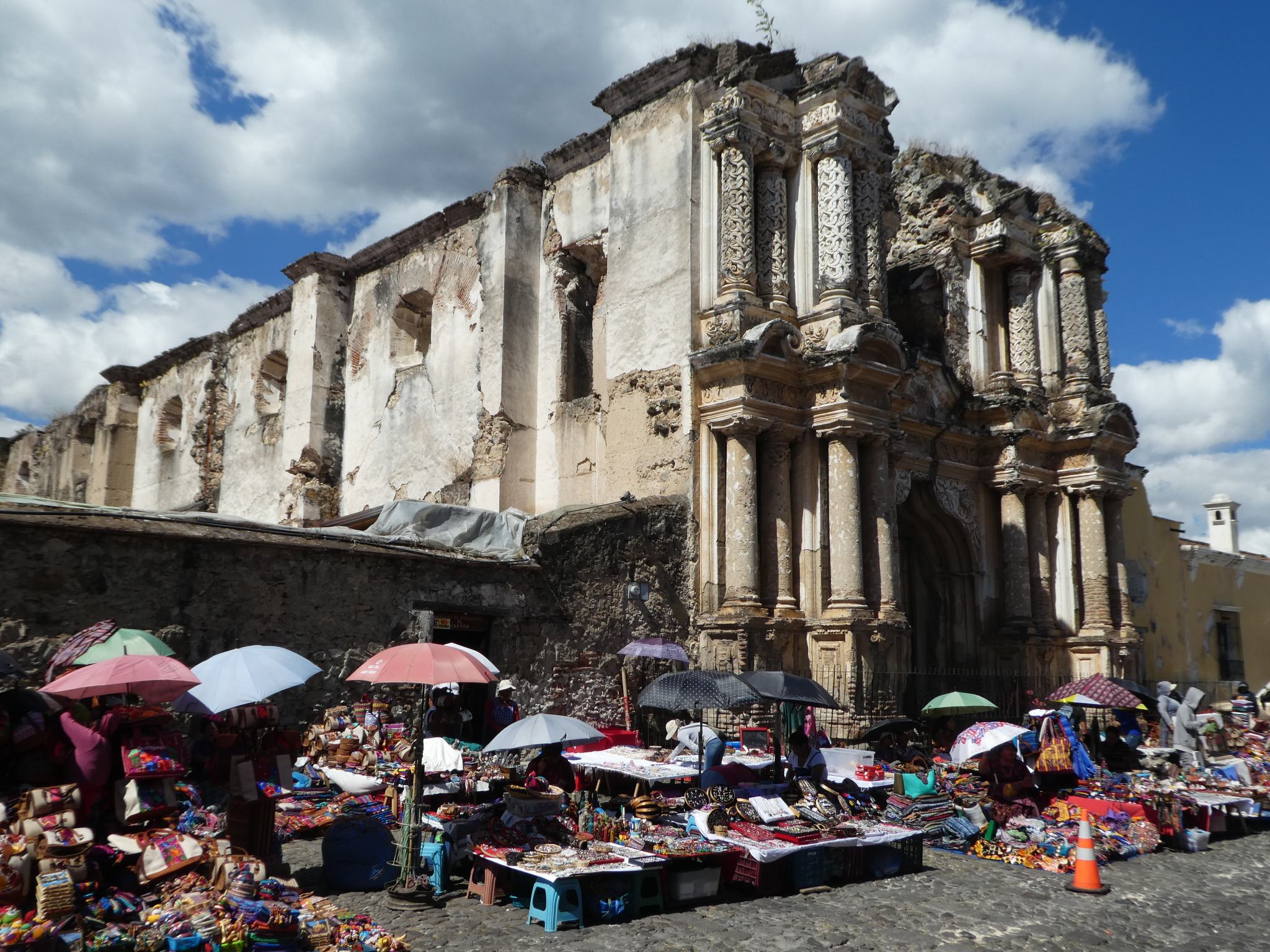 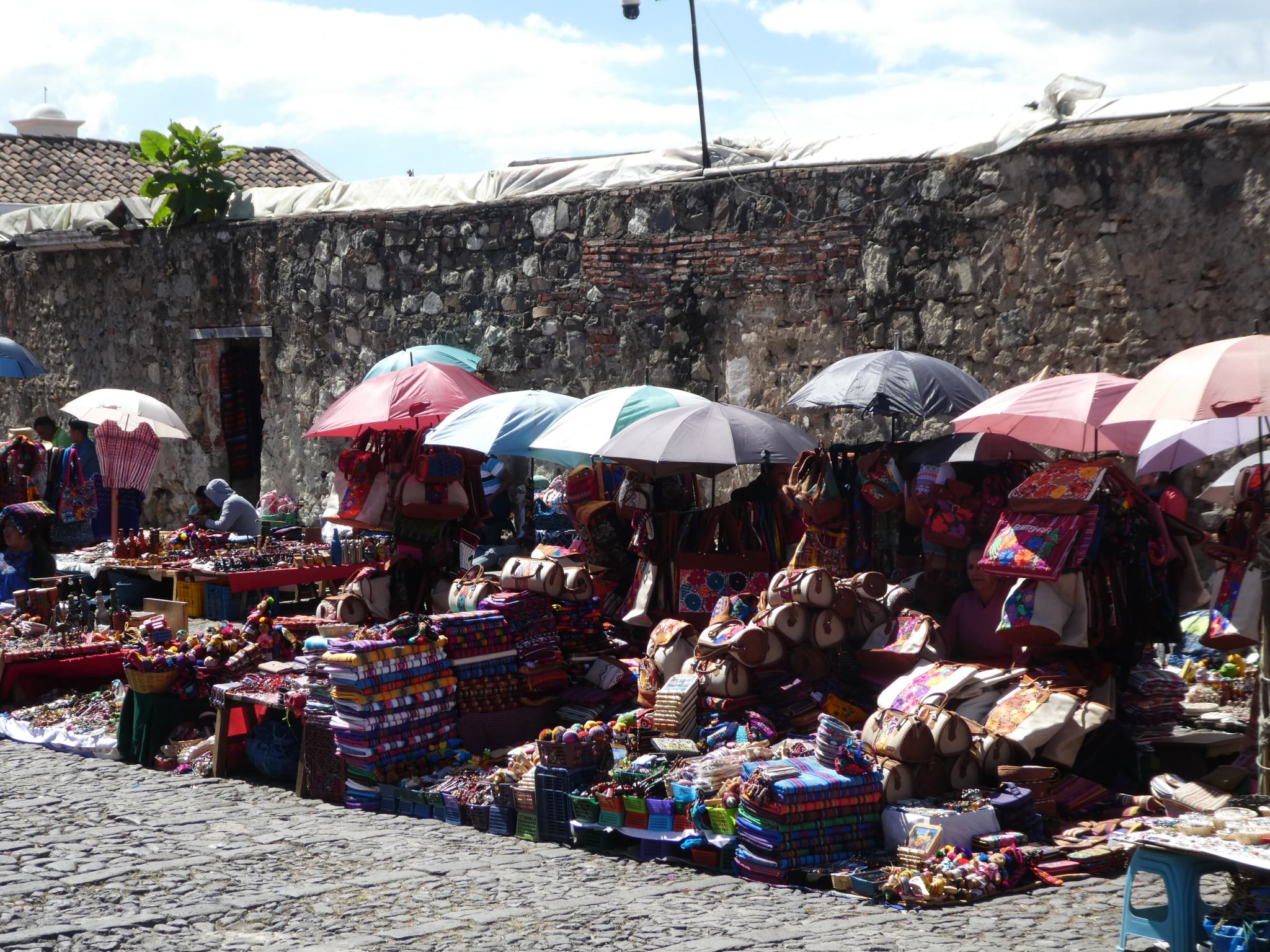 Antigua also has a large local market packed with fruit and vegetable stalls, a wet market and a flower market, and many stalls selling shoes, clothing and household goods. 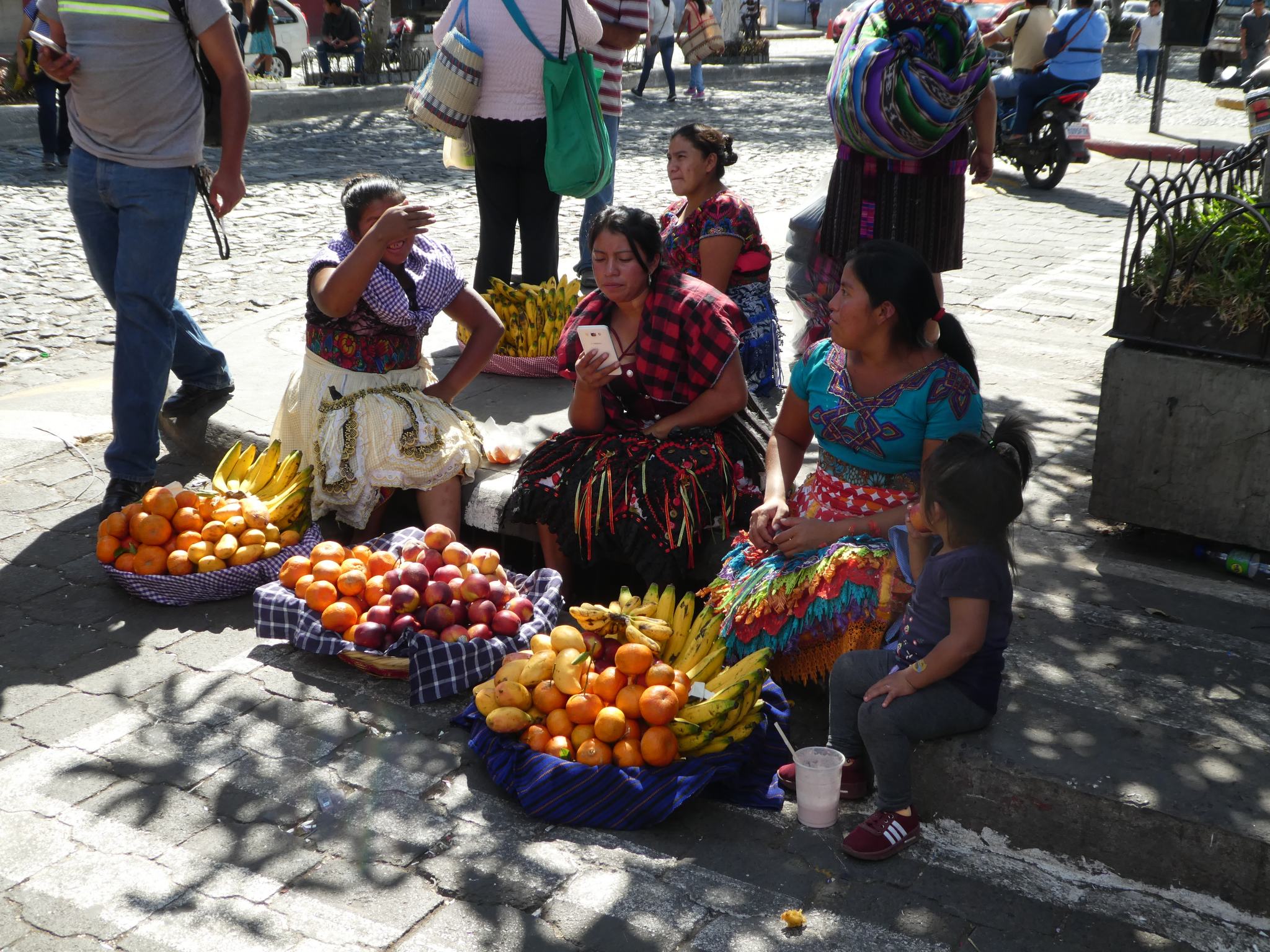 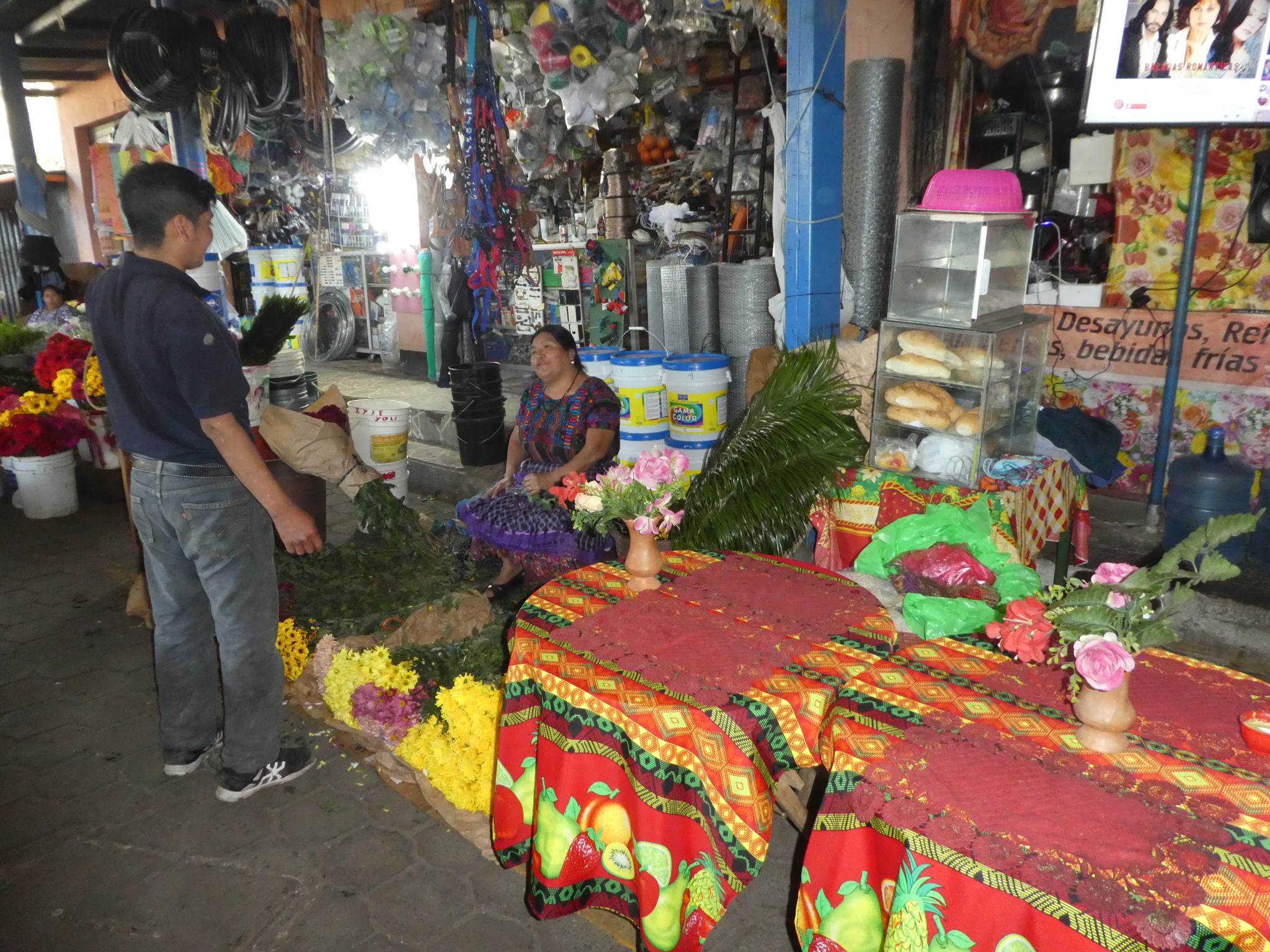 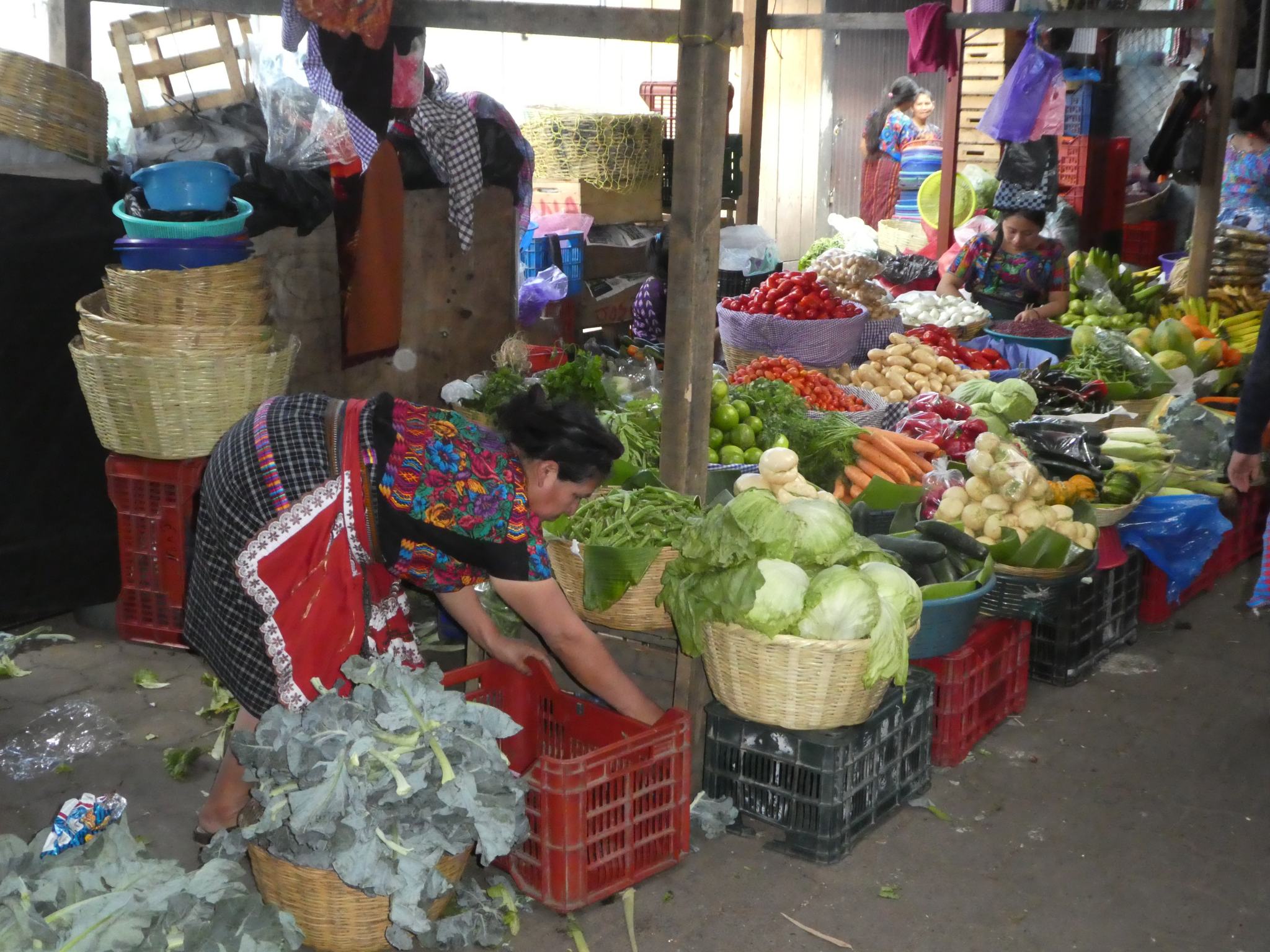 And, of course, good food. 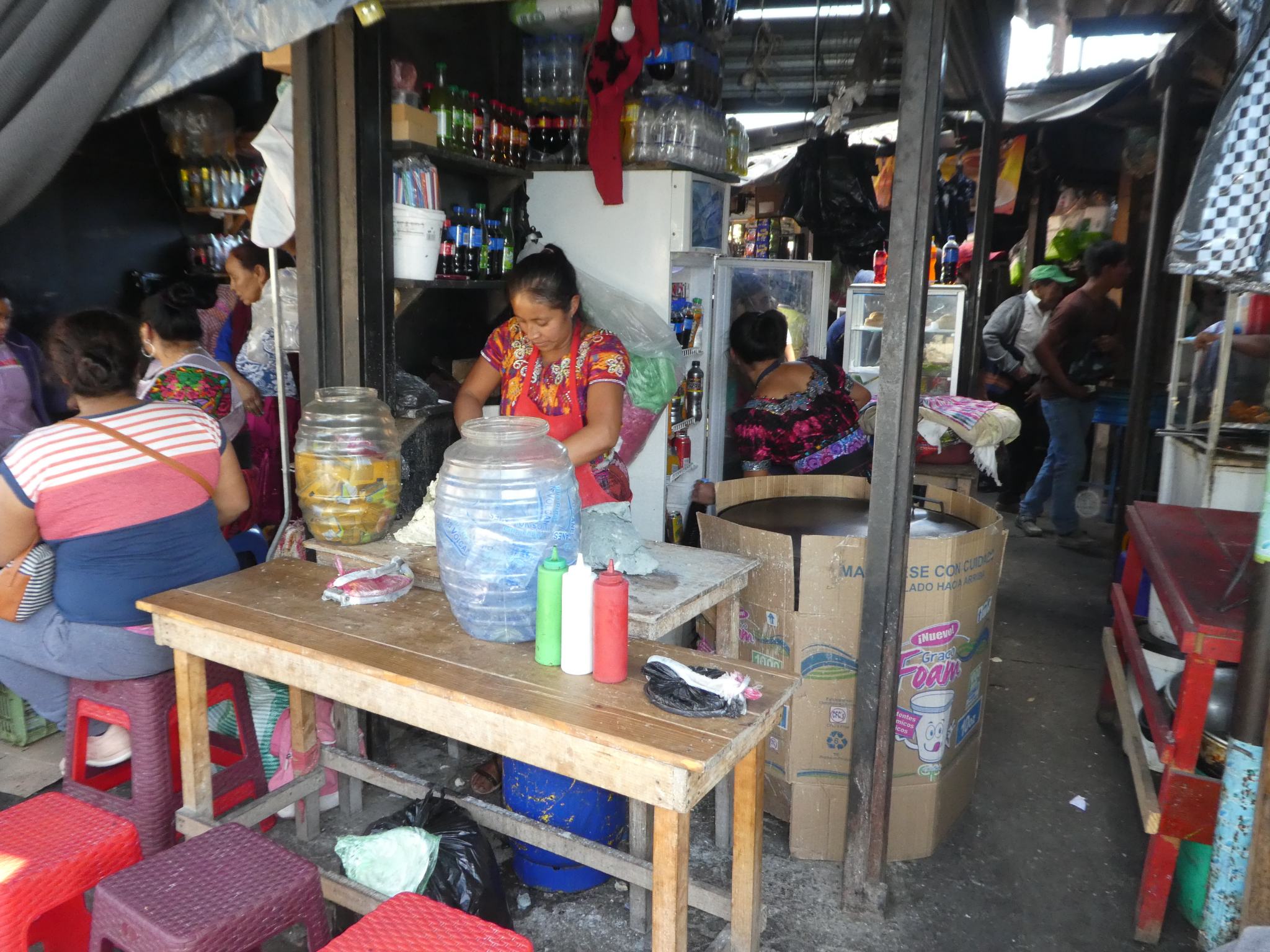 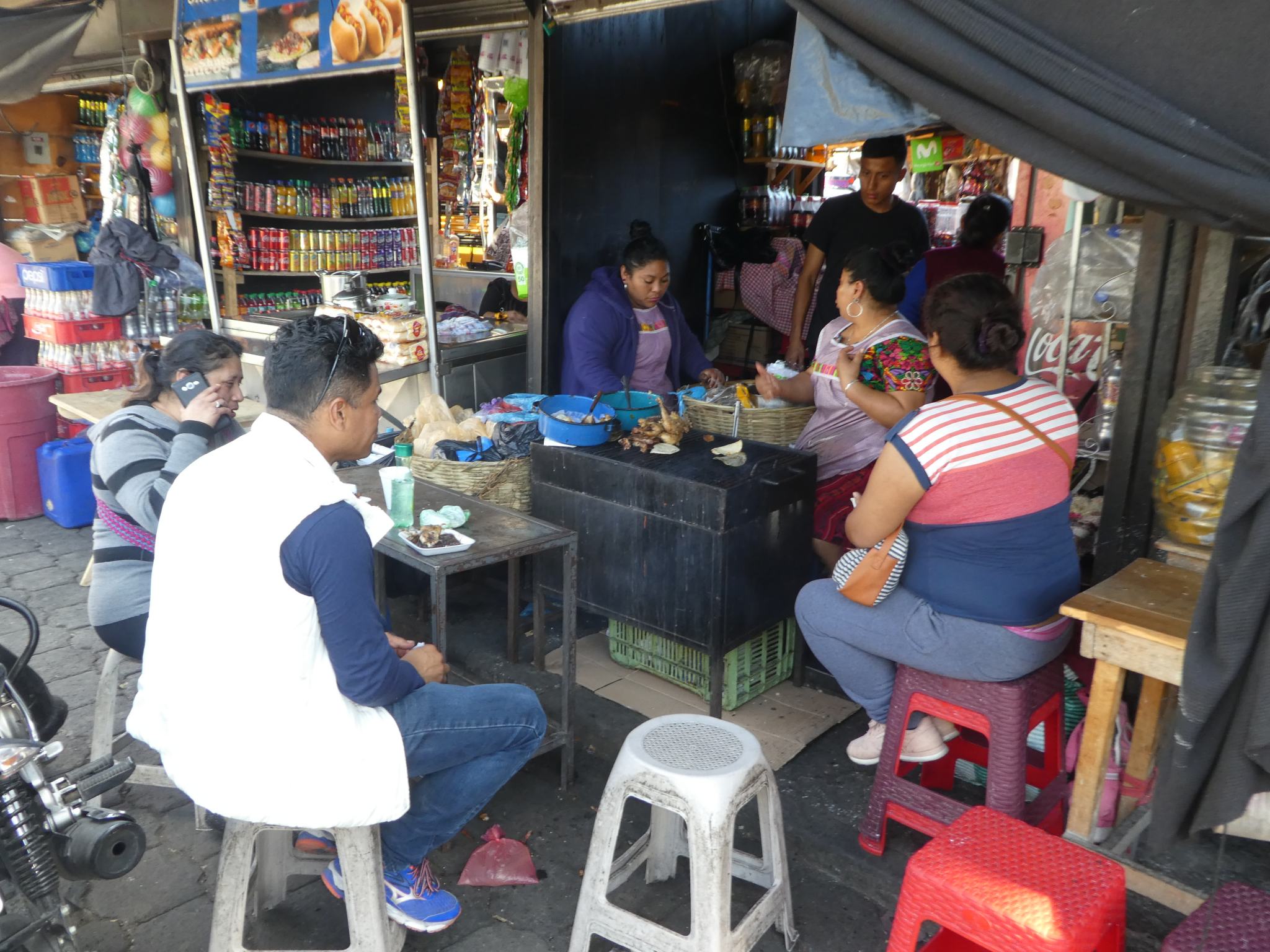 We didn’t know much about Guatemalan food before we arrived and after trying a few dishes with complex flavours, we decided to explore further.  We did an afternoon cooking class at which we learned how to make a few classics.  Here’s our teacher keeping a watchful eye on our plantain fritters stuffed with chocolate. 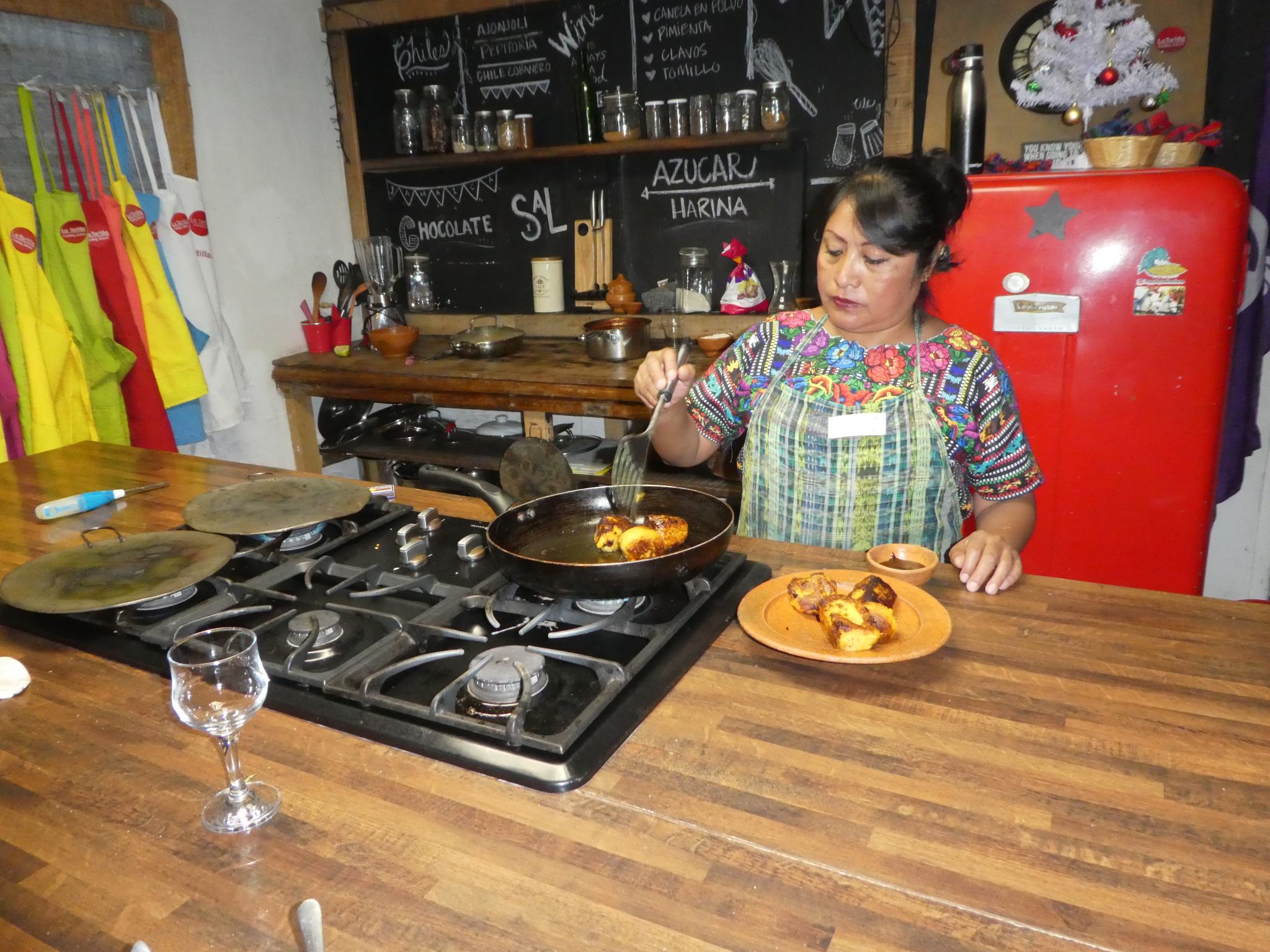 And we learned that making tortillas is waaay harder than it looks.  The market ladies can knock out perfectly shaped, even thickness tortillas in seconds without a skerrick of dough sticking to their fingers.  We managed only to produce misshapen, lumpy little specimens which tore and stuck to our hands regardless of how quickly we tried to work.  Definitely one of those foods to buy not make.

For the first two nights in Antigua, we sat on the balcony of our hotel watching Volcan Fuego spitting into the dark.  It is one of the few constantly active volcanoes around the world, emitting gas and smoke about every 15 minutes.  Lava explosions are less frequent but at the moment Fuego is in good form, constantly belching great plumes of smoke and regularly throwing spectacular amounts of lava up into the night sky.

We’ve climbed volcanoes in Ethiopia and Sicily on this trip, and have previously climbed Mt Bromo and Anak Krakatoa in Indonesia.  We weren’t really planning on climbing any in Guatemala, but after watching Volcan Fuego we thought ‘why not’.

Climbing Volcan Fuego is a high altitude technical climb so not a practical option for us, so we settled for a much tamer option.  We thought it was a climb up Volcan Pacaya, a smaller but also active volcano in the ring surrounding Antigua.  It has erupted 23 times since the Spanish arrived, and reliably belches and spits lava for the entertainment of visitors.  In reality, it was a climb up a nearby peak formed from earlier eruptions, to a viewing point from which you can get a pretty good look at Pacaya in action.

On the way up, we got a good view of Volcan Fuego and it’s neighbour Volcan Acatenango, although their peaks were hidden by cloud. 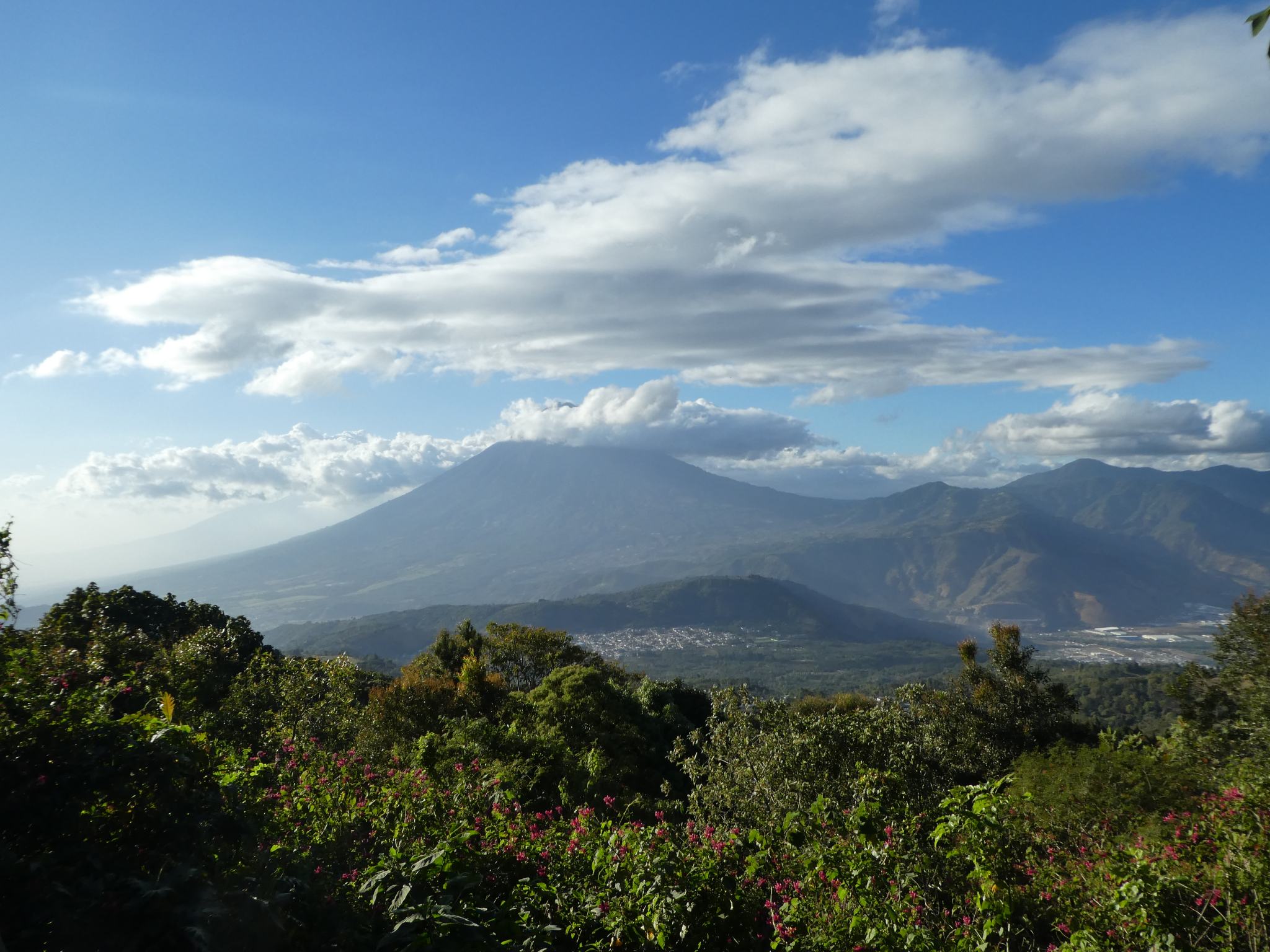 As we headed up, Pacaya was smoking. 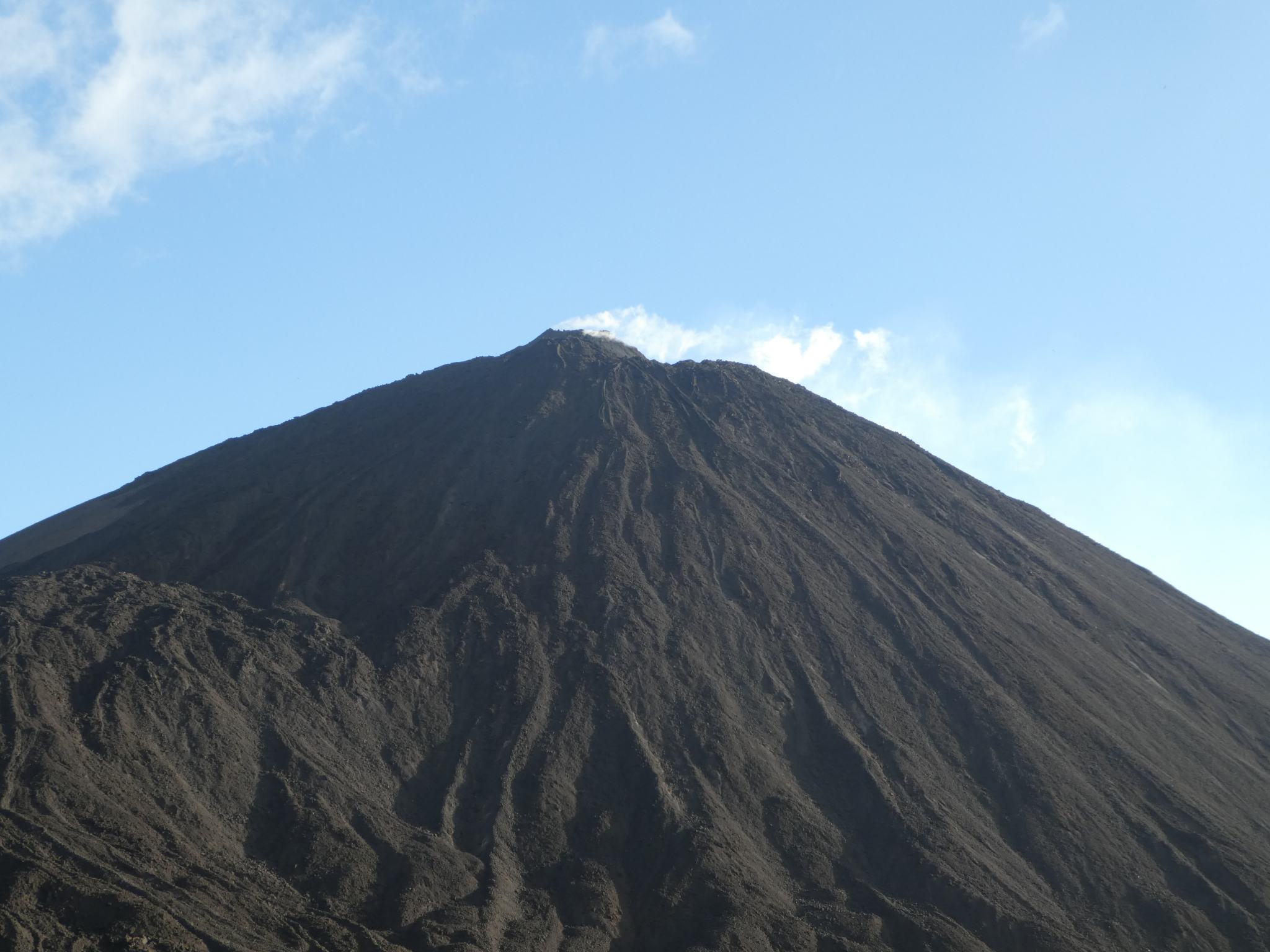 Part way across the old lava flow, the volcanic activity is close enough to the surface to produce sufficient heat to toast marshmallows in holes in the rock. 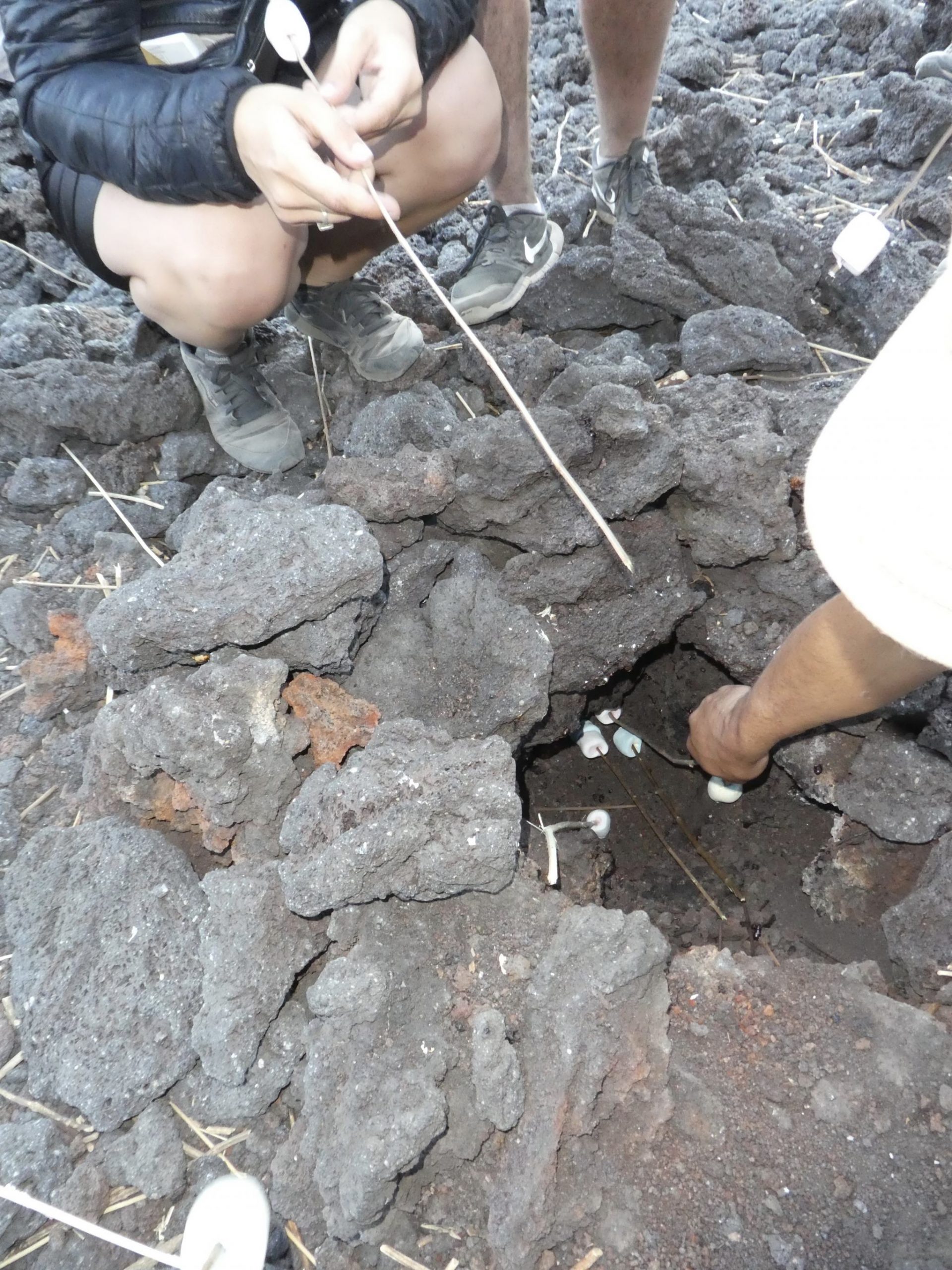 And Pacaya put on a good display, with lots of lava flowing and what the locals call ‘bouncing rocks’, ie truck sized red hot boulders thrown out of the volcano which bounce down the side of the mountain along with the flows of lava. 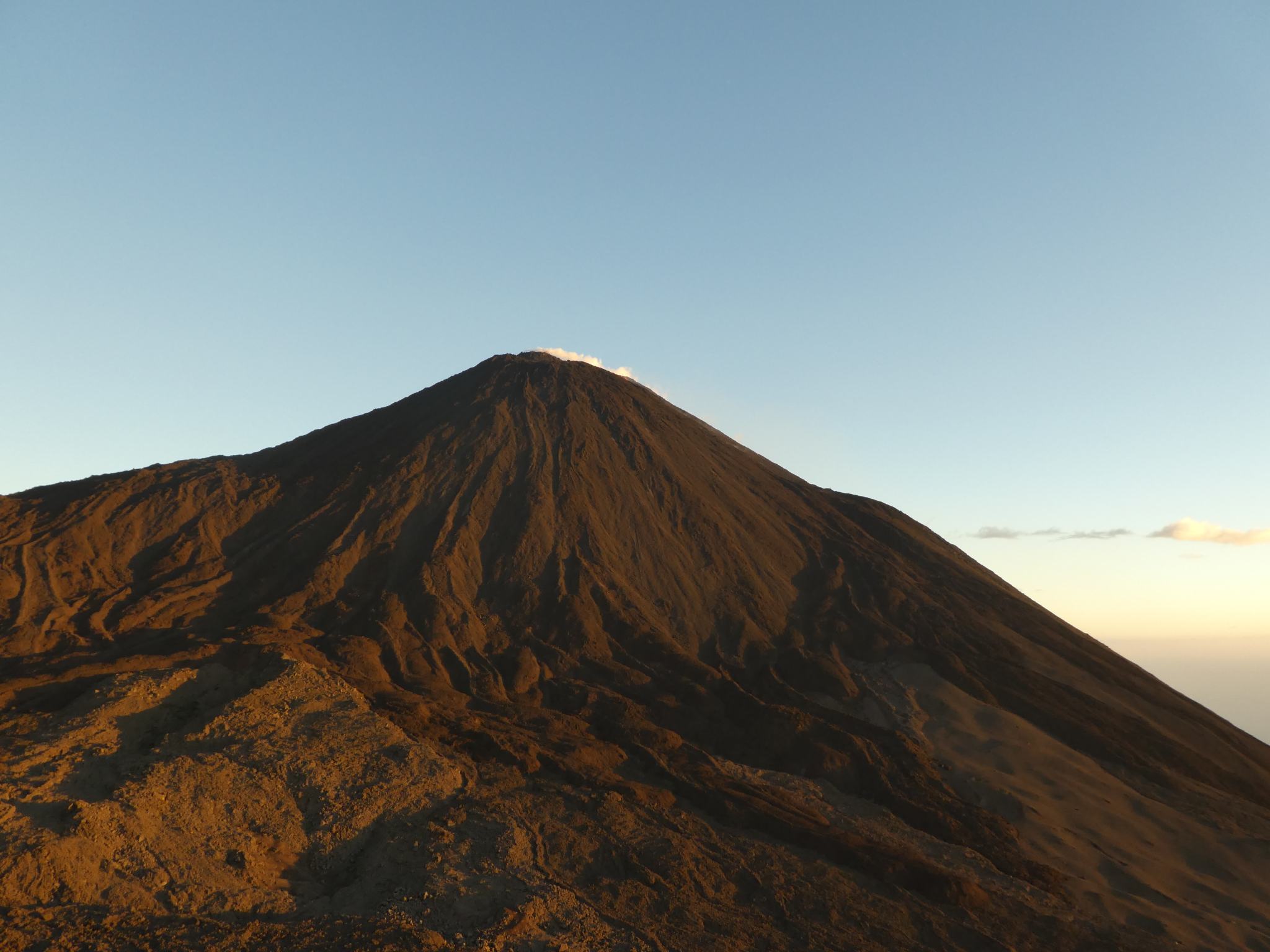 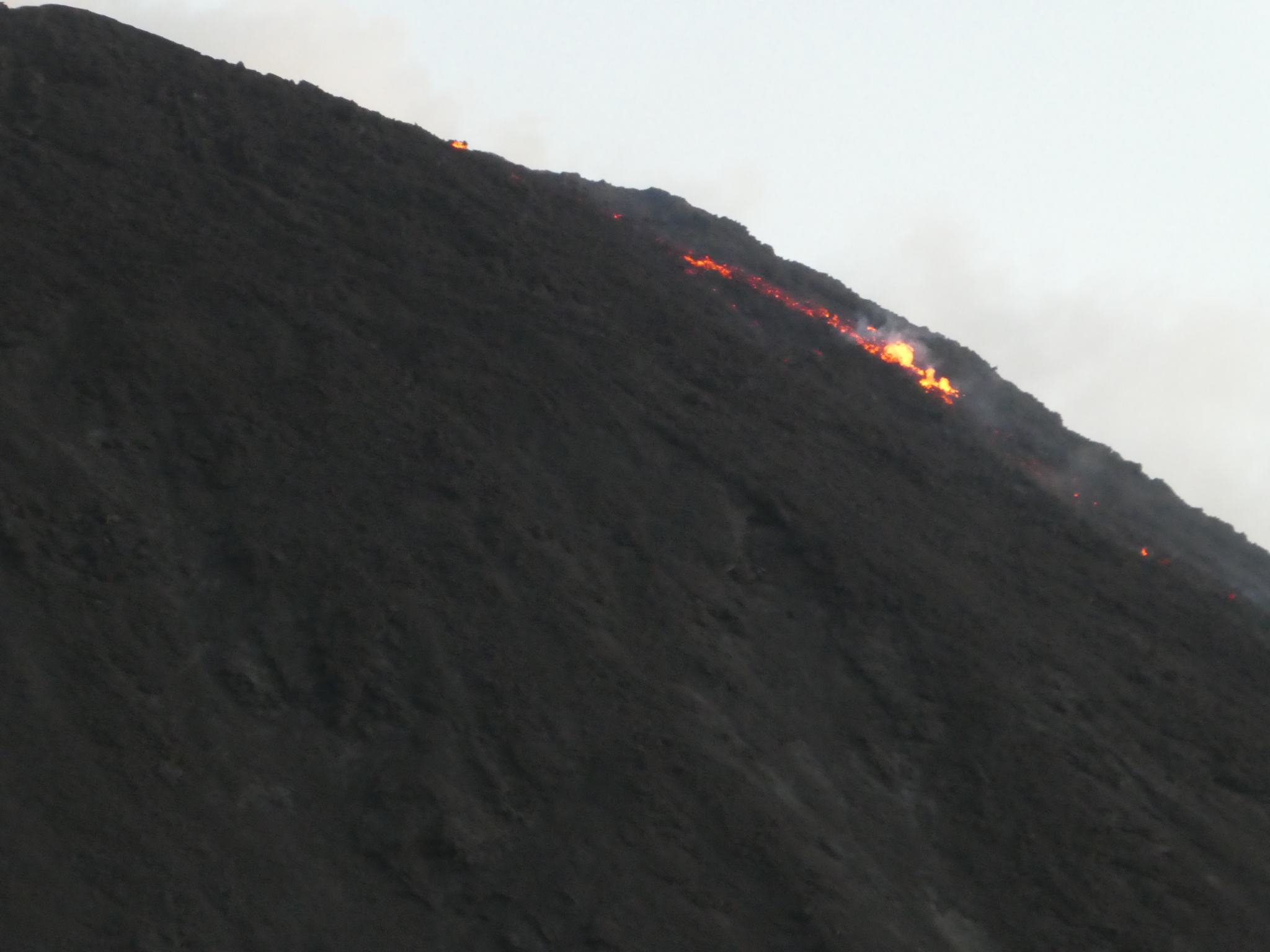 As the sun set, we had a 360 degree panorama of Pacaya, the other volcanoes and even of Guatemala City in the distance.   It wasn’t an arduous climb and well worth staying an extra day in Antigua to make the trip.