Quetzaltenango – commonly shortened to Xela (pronounced ‘shell-a’) – is Guatemala’s second largest city, but with only 167,000 people, it doesn’t feel big.  It doesn’t have a lot of tourist sights, but it’s central area has a pleasant double square surrounded by historical buildings from the colonial period. 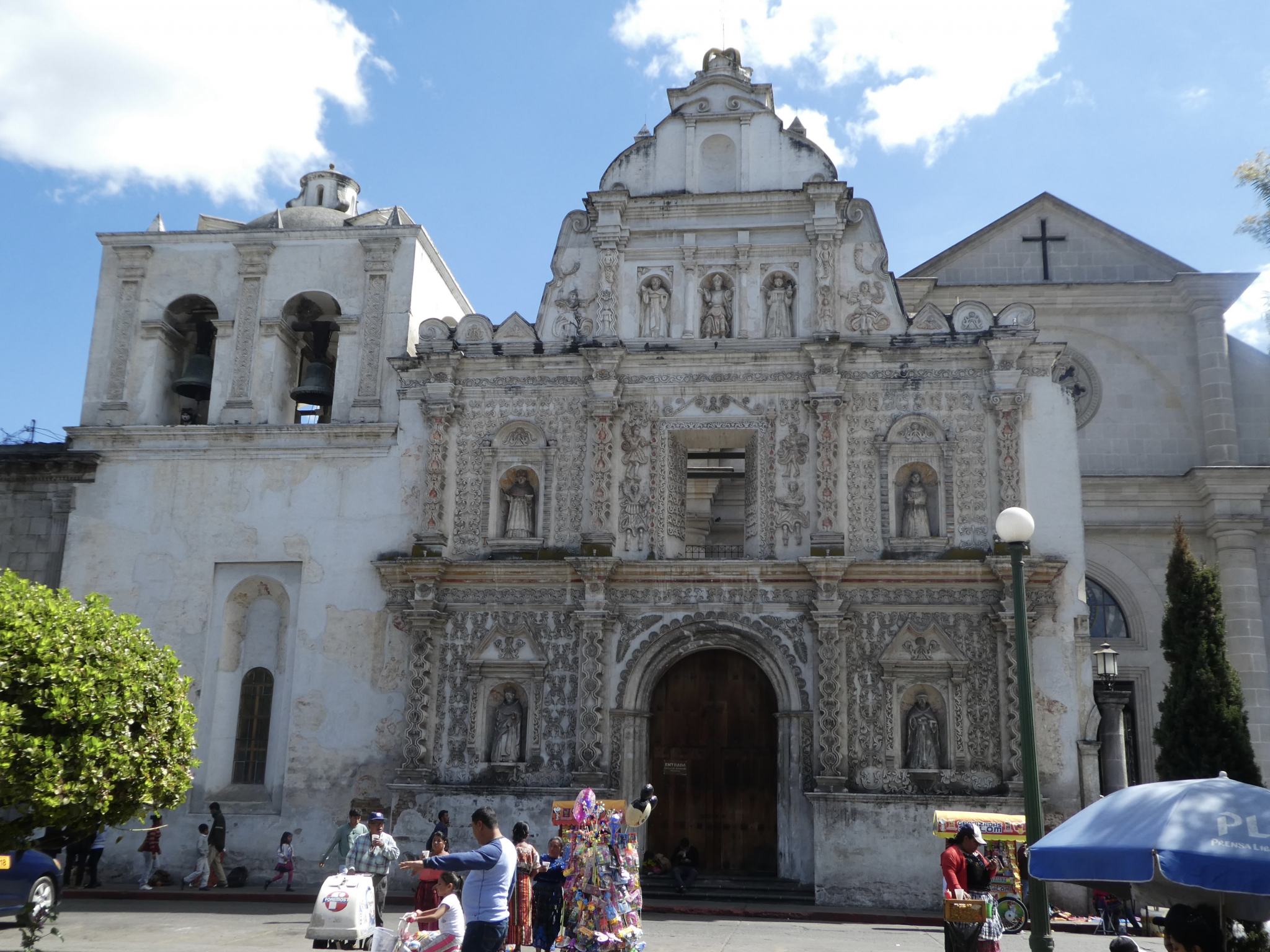 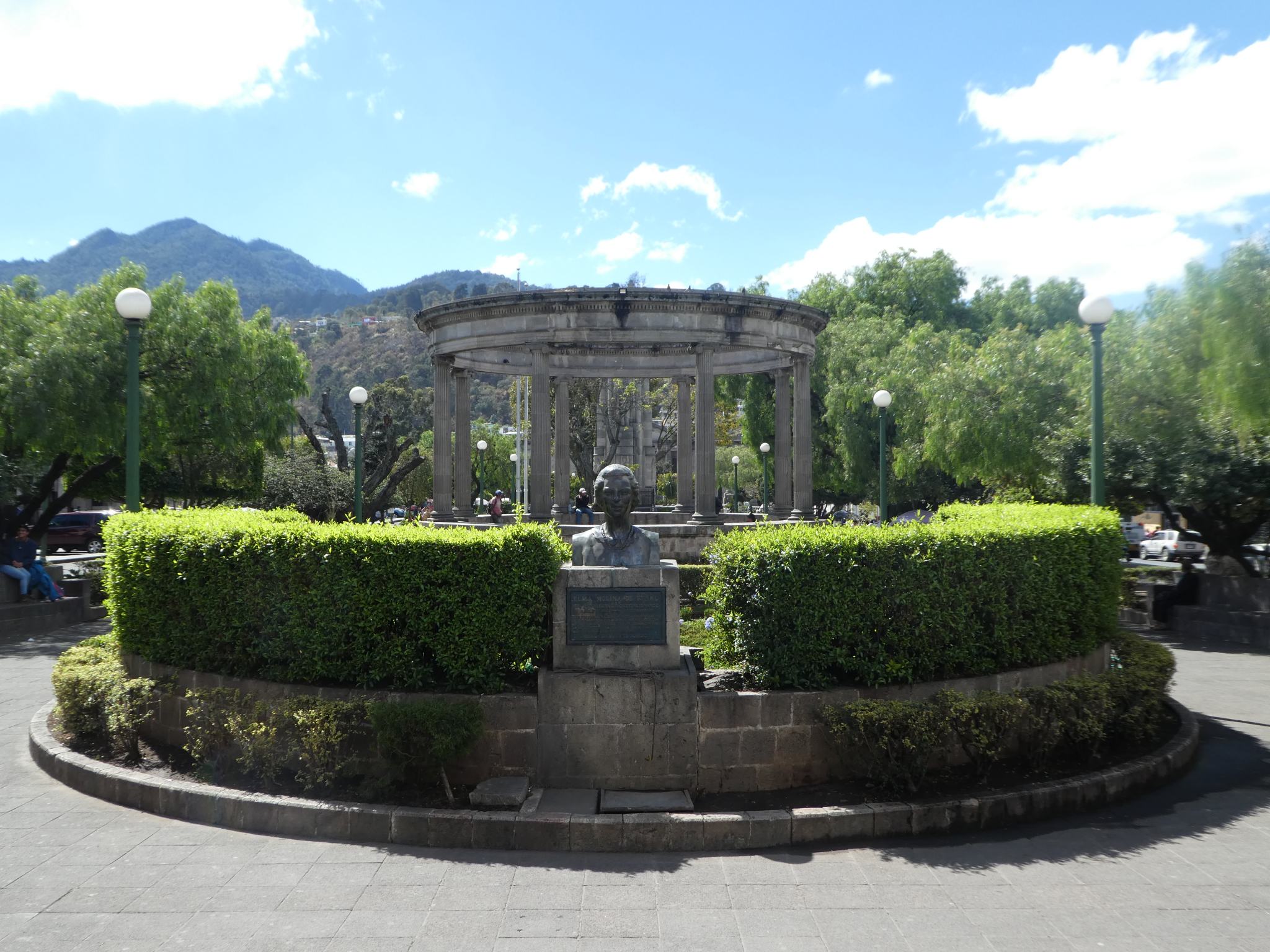 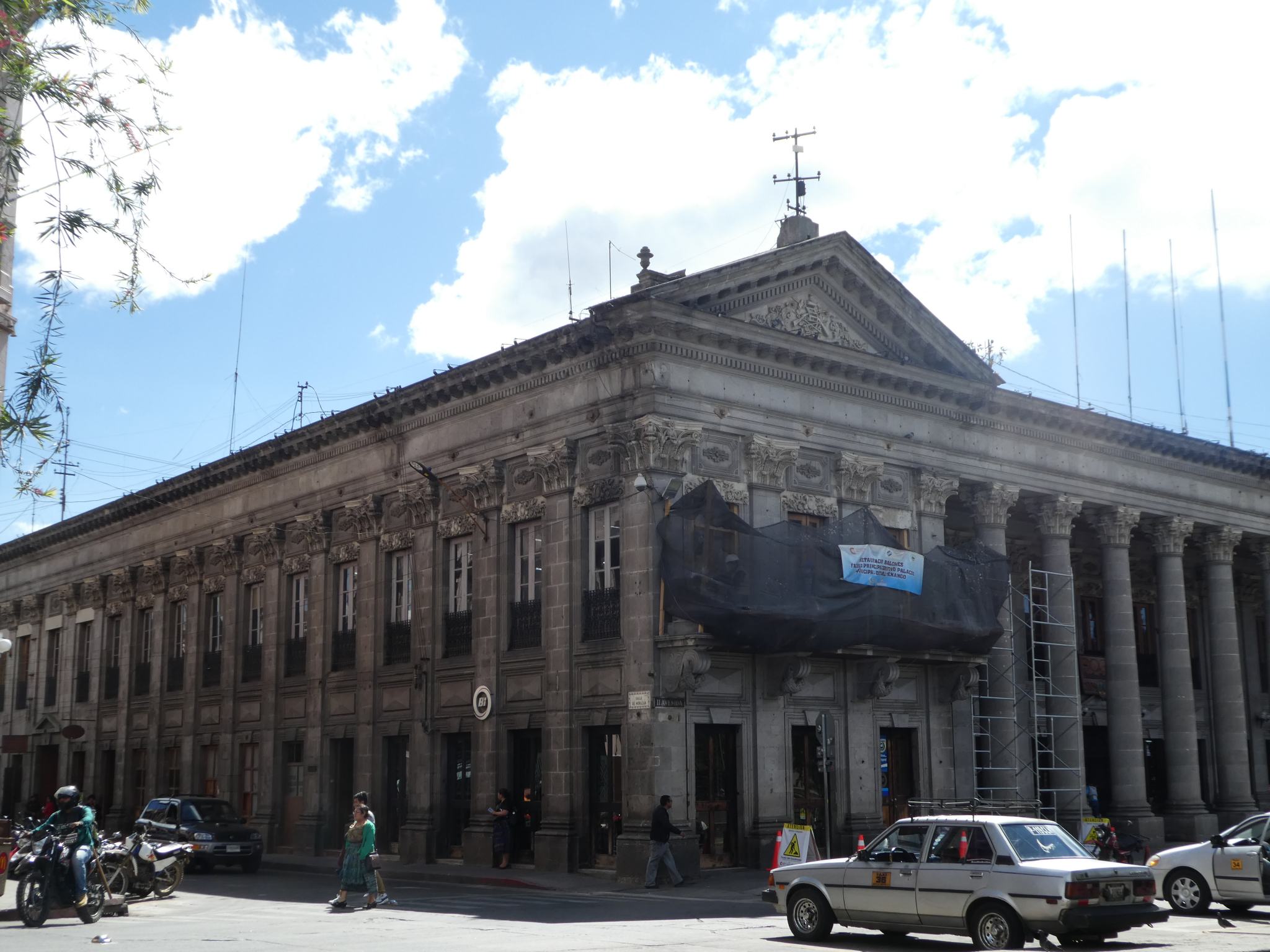 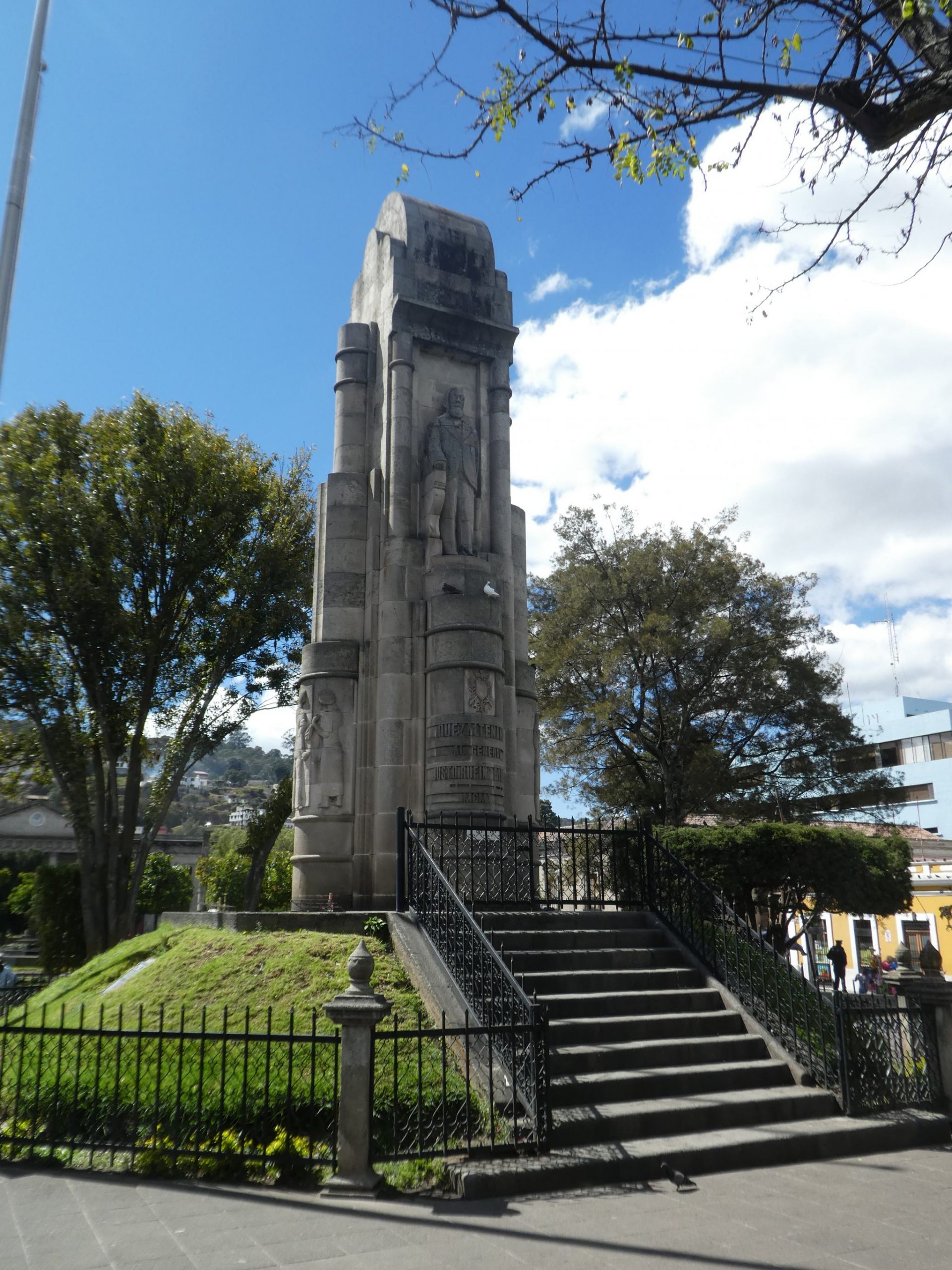 Around the central market, a buzzy collection of food stands set up in the evening, especially on Sunday night to feed the crowds which pour out of the cathedral across the street after night mass. 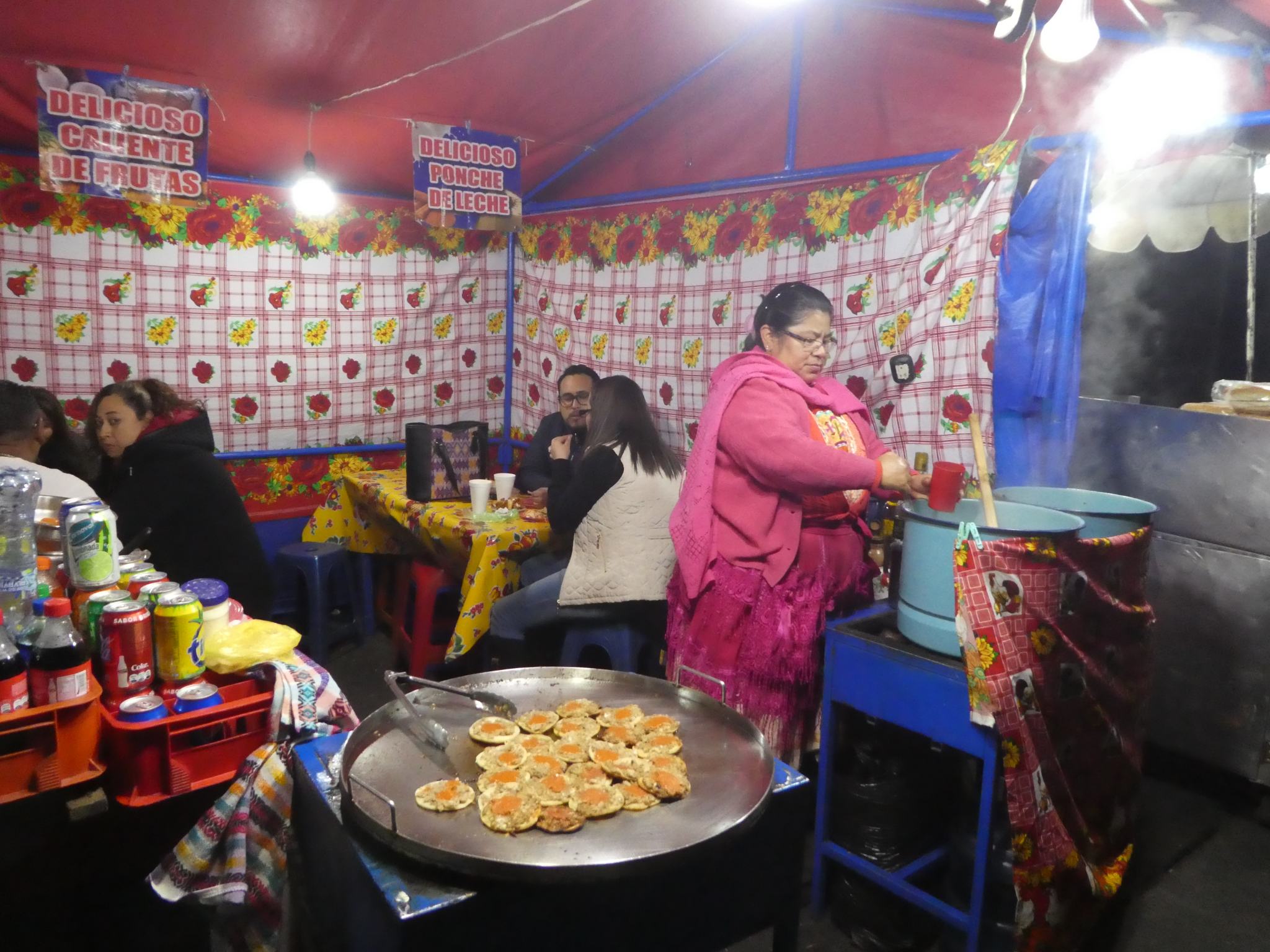 There’s also a few points of interest within easy reach of the city.

In the nearby town of San Andres Xecul is perhaps the most brightly decorated church in Guatemala. 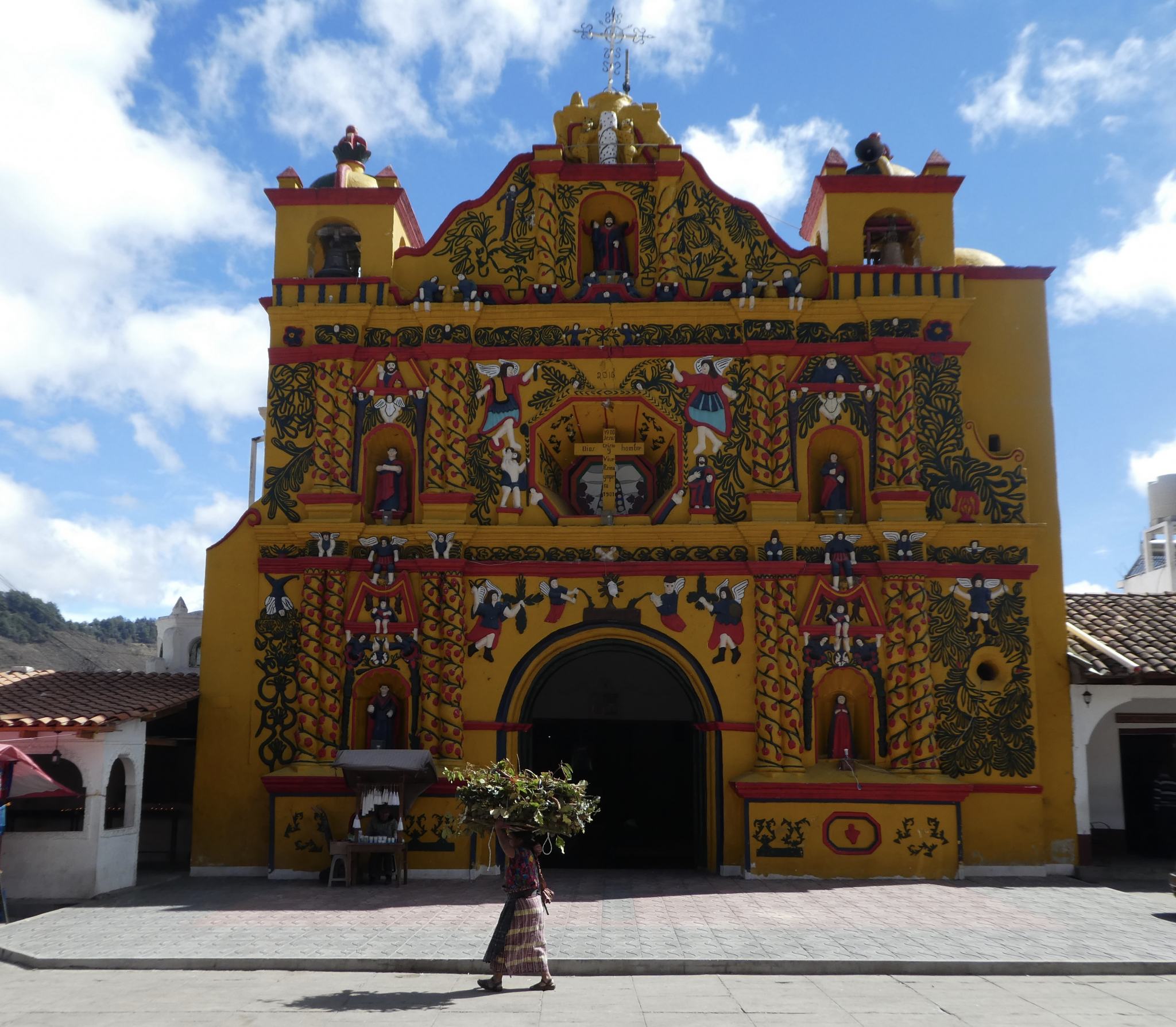 Looking down to the church from a hill above is the smaller El Calvario chapel.  It was built on the site of a former Mayan temple and traditional ceremonies are still practiced on the adjacent land, which combines Christian crosses with Mayan offering and burning practices. 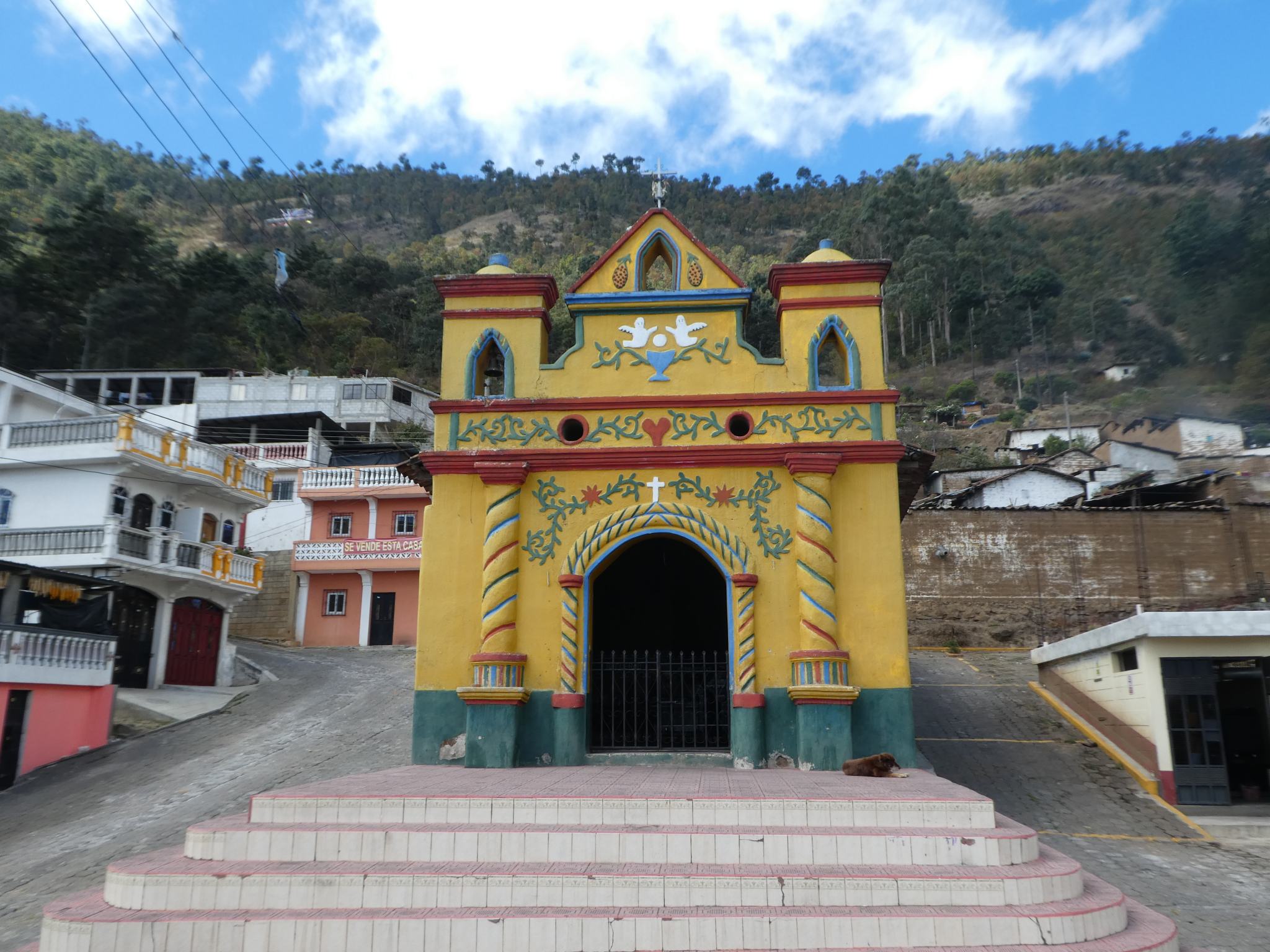 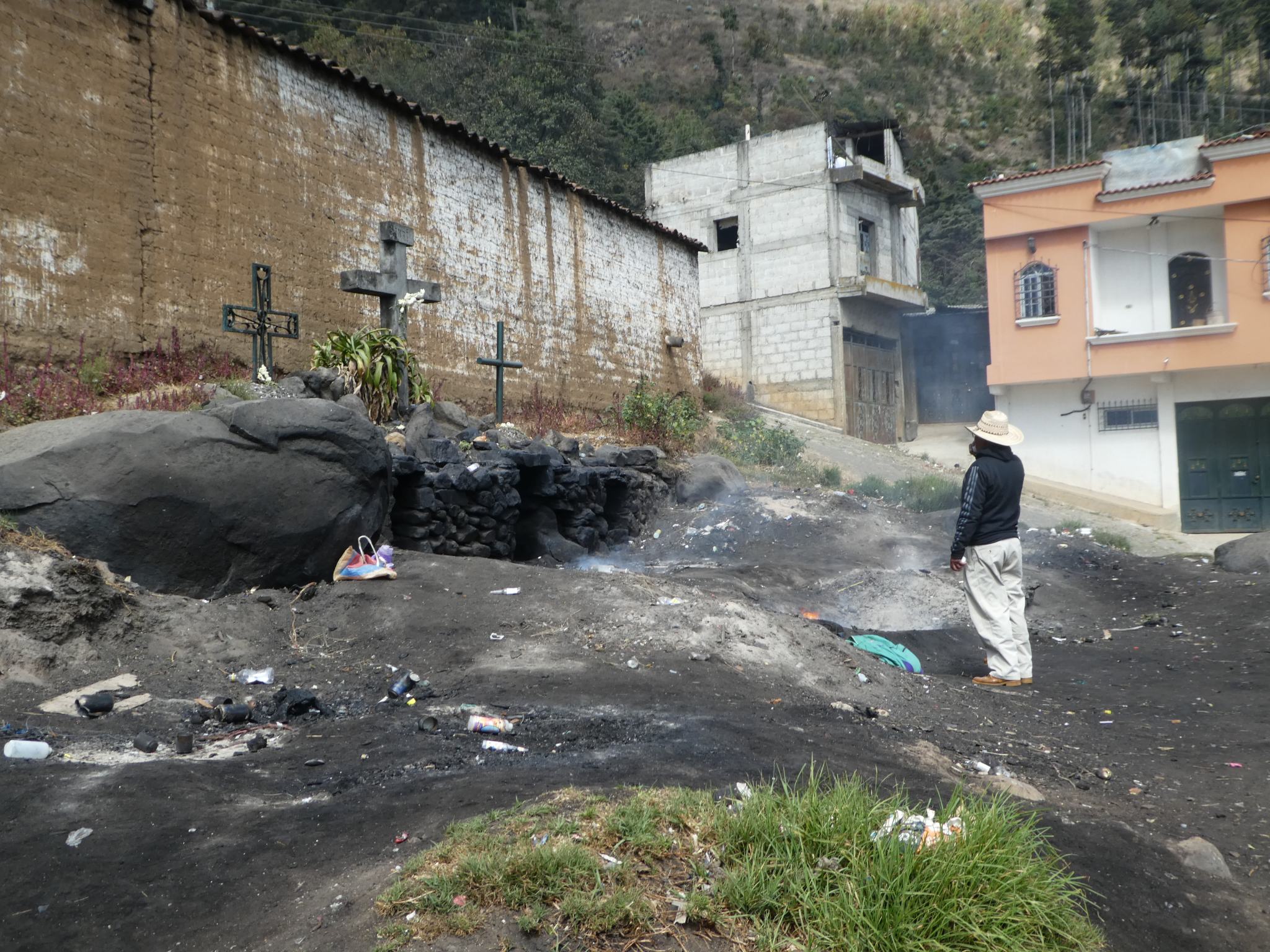 Xela is about 2,300 metres in elevation and can get rather chilly.  Happily, the volcanoes in the area mean thermal activity in the form of hot springs.  Fuentes Georginas is a spa pool complex high in the hills an hour’s drive from Xela.  Named after the wife of a former president who spent a great deal of time luxuriating here, it is a popular destination for locals and domestic tourists.

We tried the natural pool where hot water drips in from the rock face.  We had it to ourselves and it’s a lovely forest setting, but unfortunately the volume of water meant it just wasn’t hot enough. 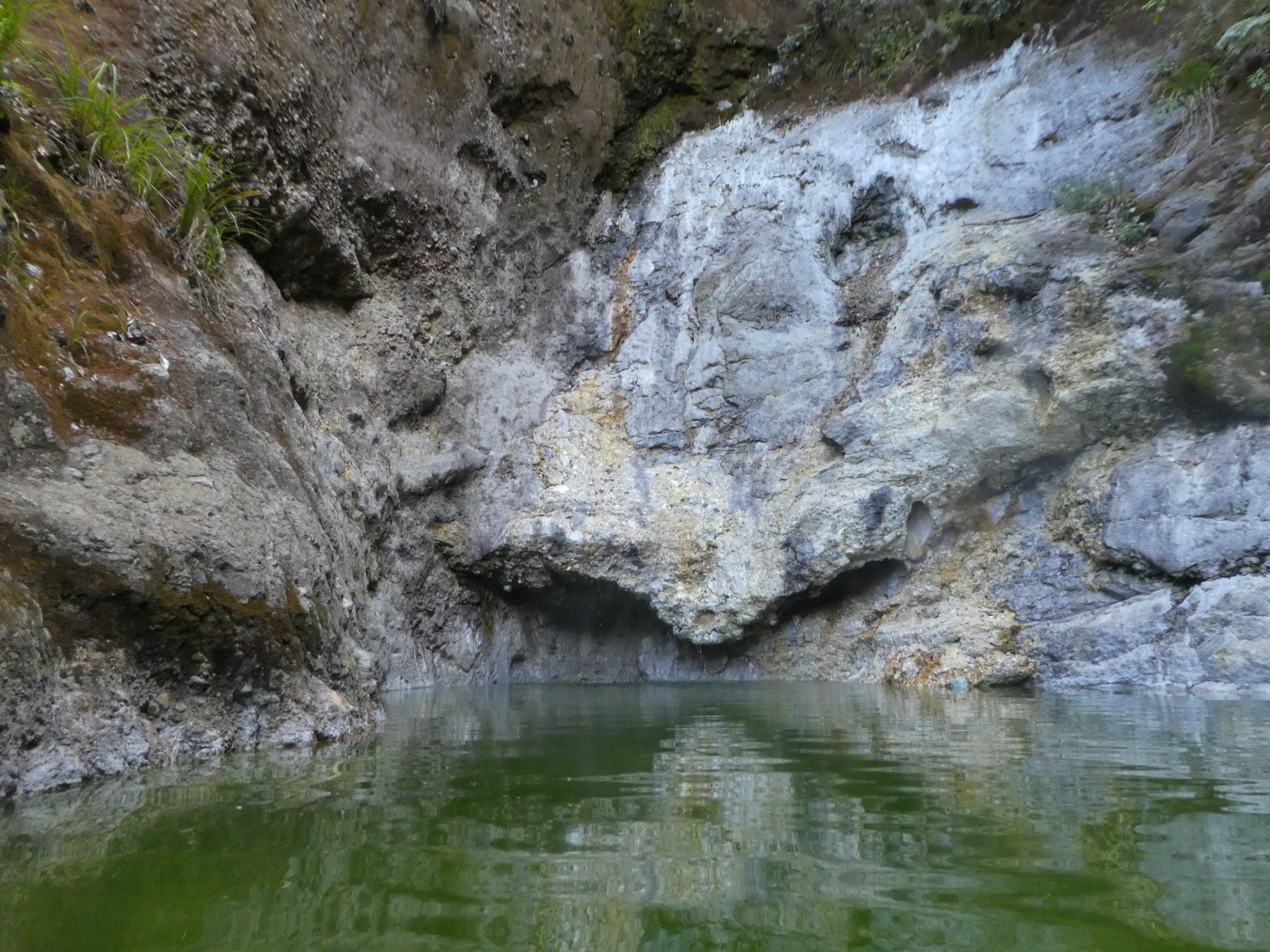 We moved to the main pool which was considerably warmer.  It still wasn’t blisteringly hot, but it did a good job of raising our core temperature. 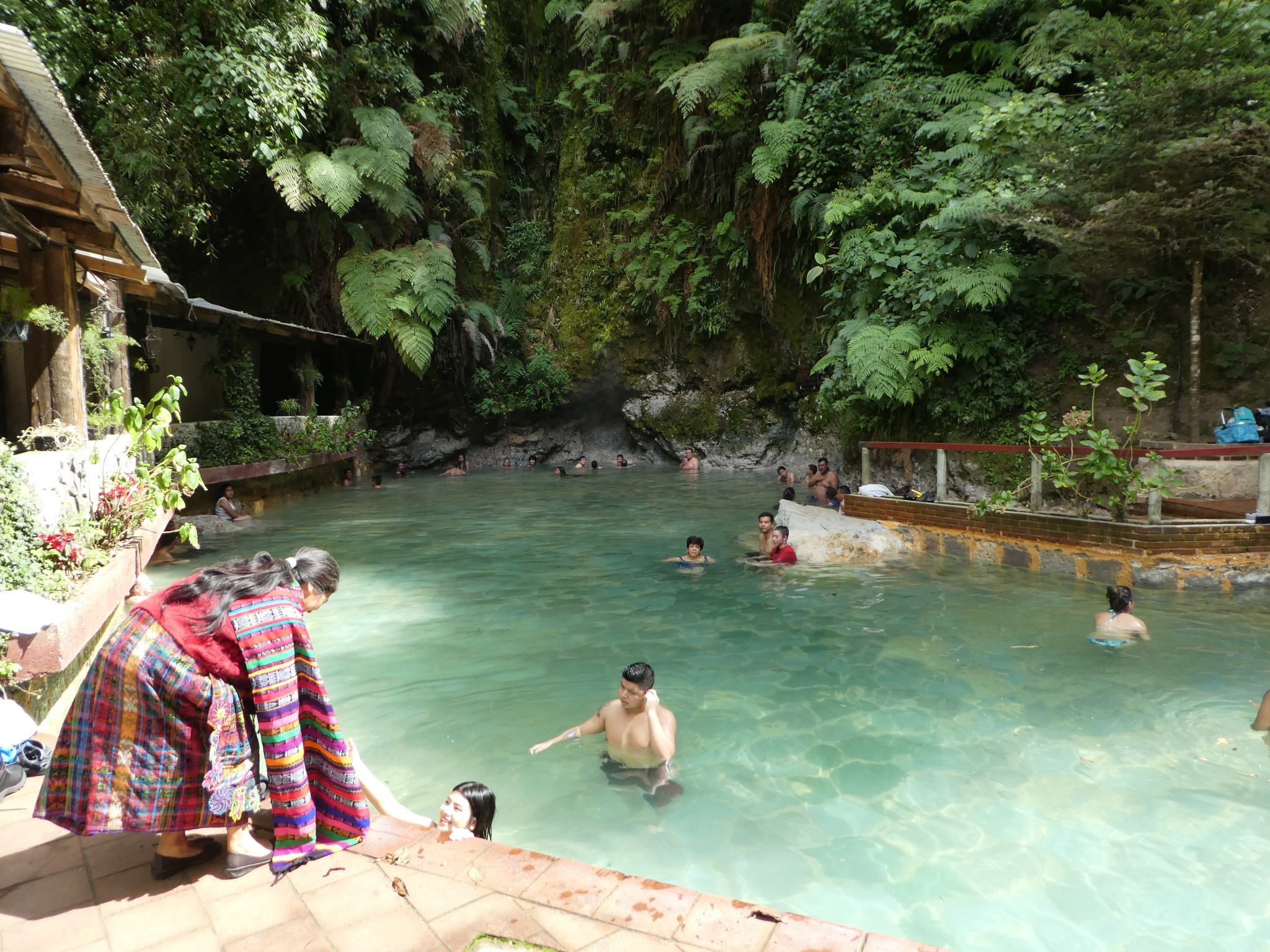 John, however, pronounced it a dud on account of not having a swim-up margarita bar (see our earlier post on Arenal in Costa Rica).

Xela was a pleasant city but the reason we came was to do a hike from there back to Lake Atitlan.  Here’s how it went.

Day 1: Xela to Antigua Santa Catarina Ixtahuacan:  After an early breakfast we walked half an hour to the edge of Xela and caught a chicken bus to Xecam, a small village where the trail started.

Chicken buses are legendary in Guatemala for their colourful decoration. 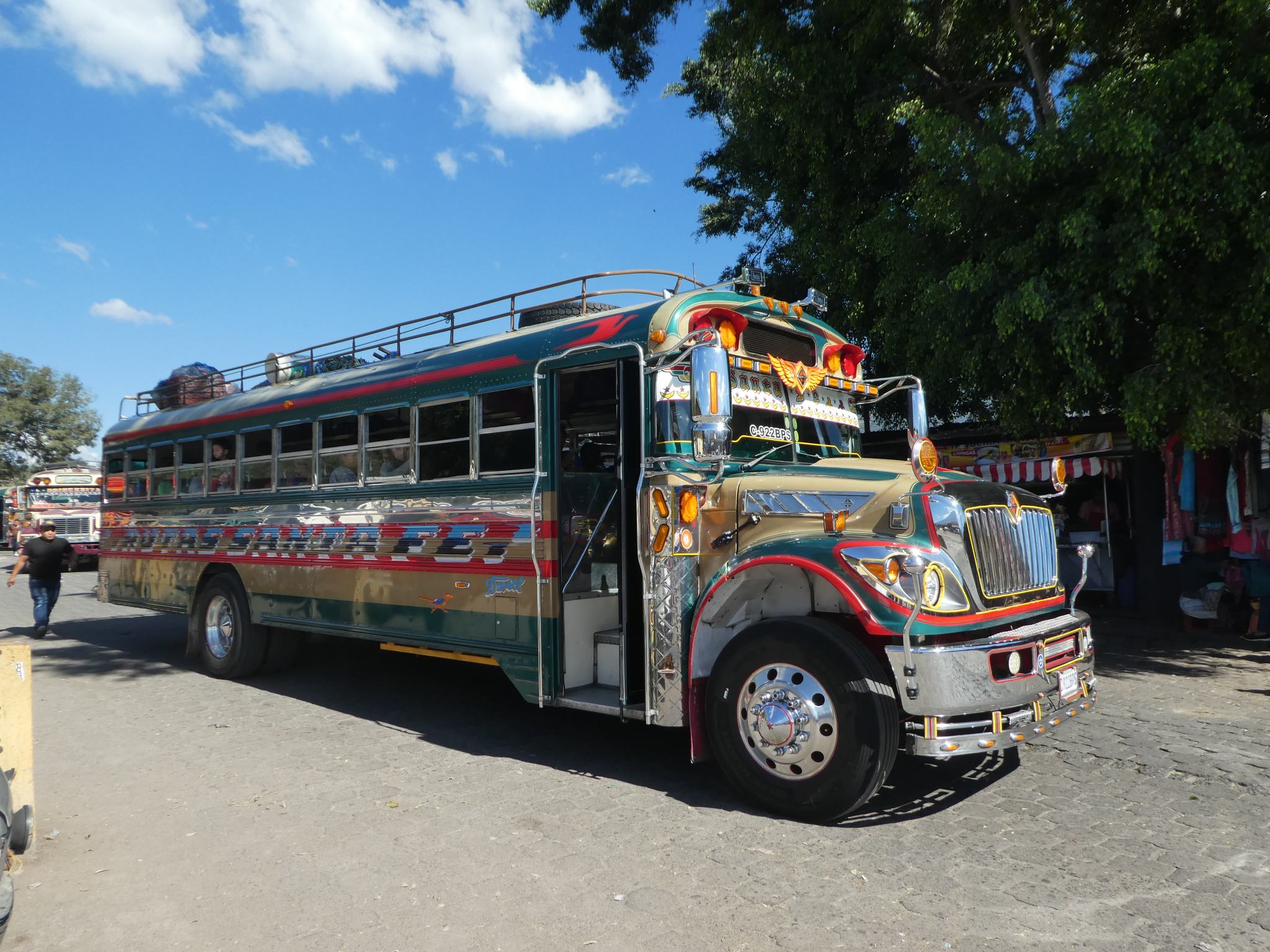 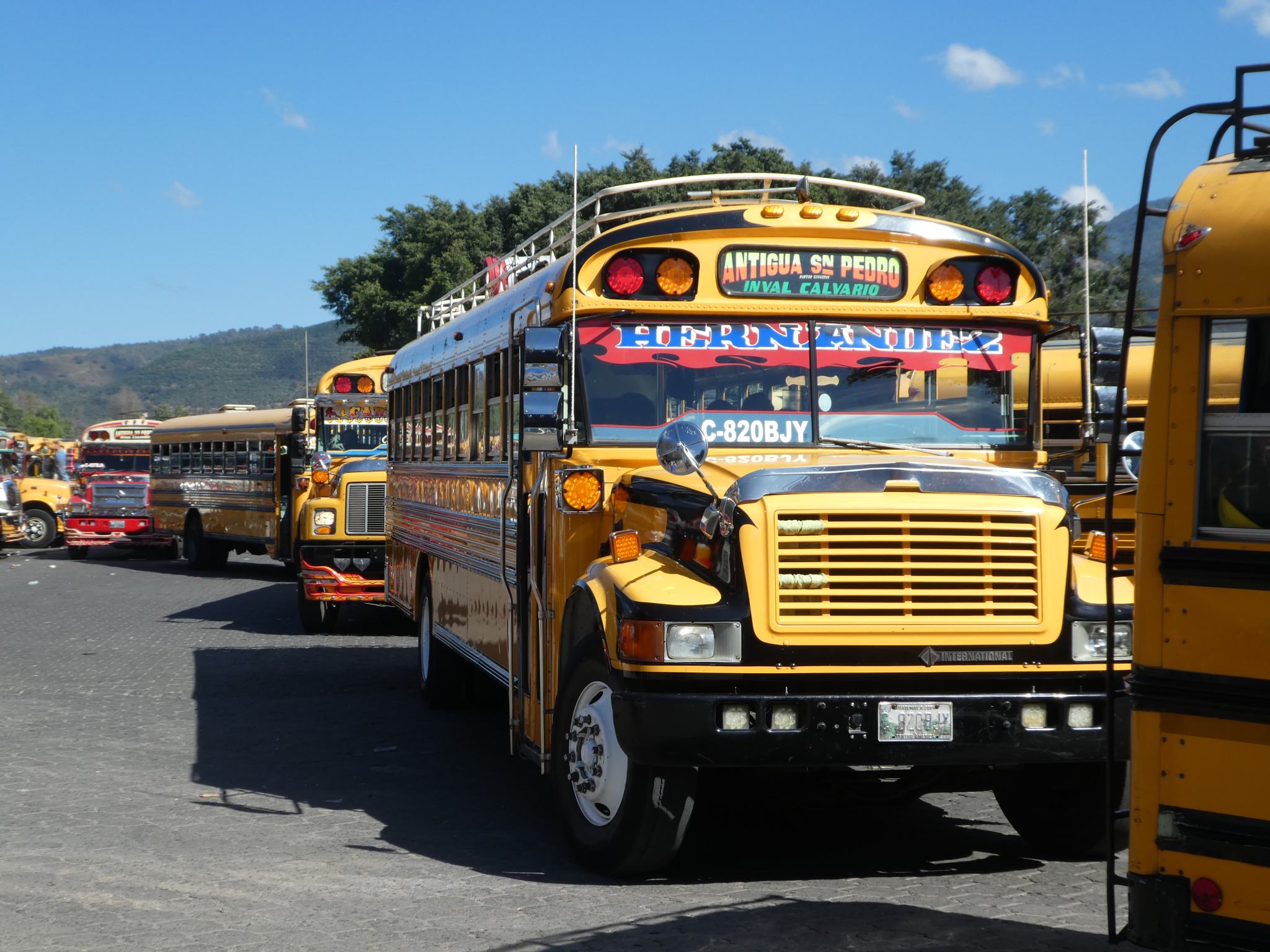 And for the craziness of their drivers.  They just might be called chicken buses because the drivers have made an art form out of playing chicken.

Many of the buses bear a slogan in Spanish across the top of the windscreen such as ‘Dios mio ayudame’ (‘My God, help me’) and ‘Dios es mi giua’ (‘God is my guide’).   In our travels around Guatemala we decided the drivers must really believe in divine intervention.  Because they certainly don’t drive as though getting to the destination in one piece is their responsibility.  Overtaking on blind corners and/or on mountain roads wide enough for just one vehicle is standard practice.  Following another vehicle for more than about 100 metres is unacceptable, irrespective of the road conditions, forward visibility or likelihood of oncoming traffic.  It’s all in God’s hands, it seems.

Anyway, we did get to Xecam without incident, and then the hard stuff started.  Up, up, up on a relentless incline.  We were soon struggling with the effects of the increasingly thinning air and the far-too-many tacos we’d consumed over the last few months.  But after a hard couple of hours, we reached high points which made it all worthwhile. At 3050 metres, it was well short of our 4,000 metre hike in Ethiopia, but we were definitely feeling the oxygen deprivation. 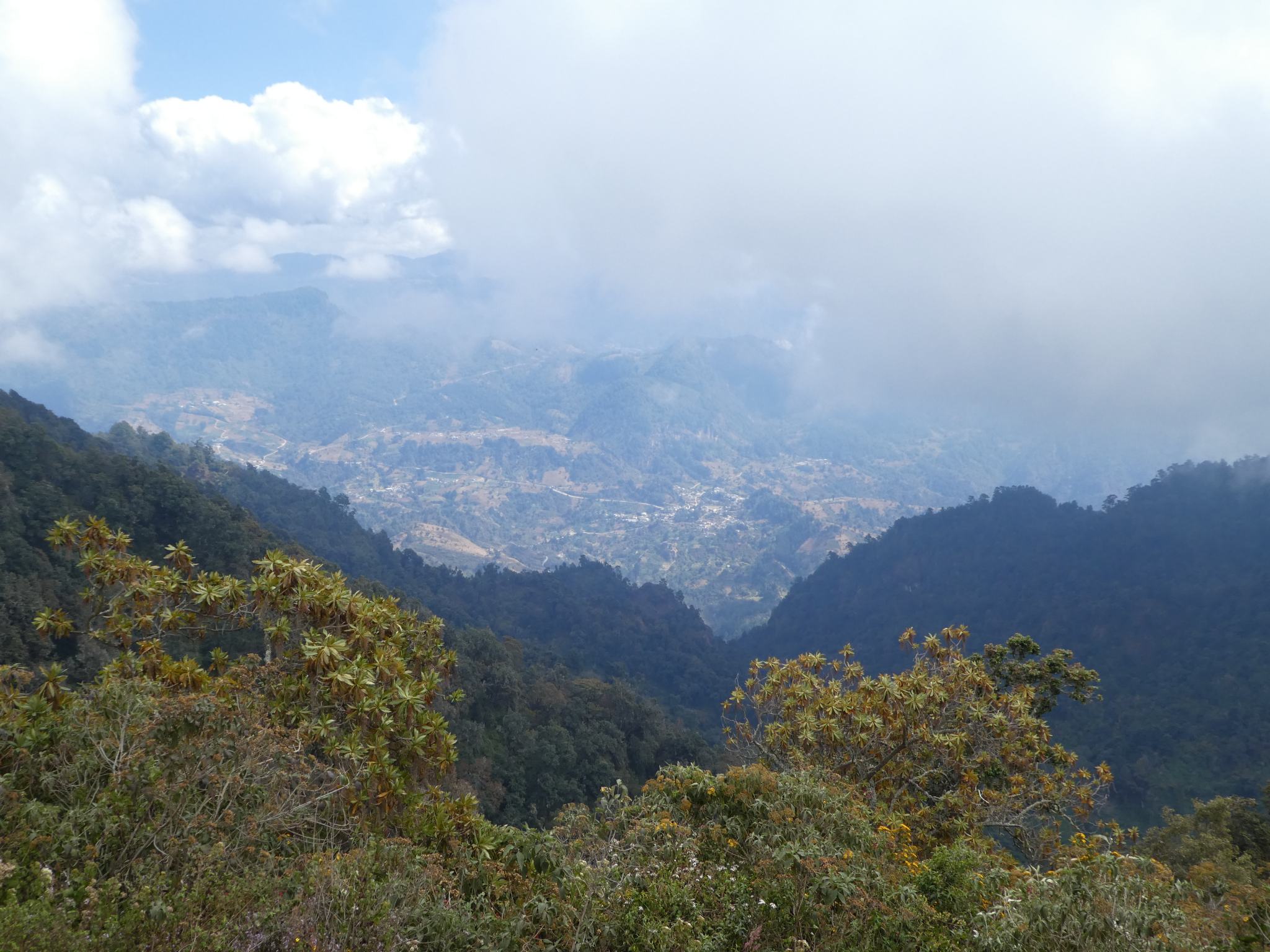 After lunch we started down, down, down and then up again.  After 19km in total, we reached the little town of Antigua Santa Catarina Ixtahuacan. 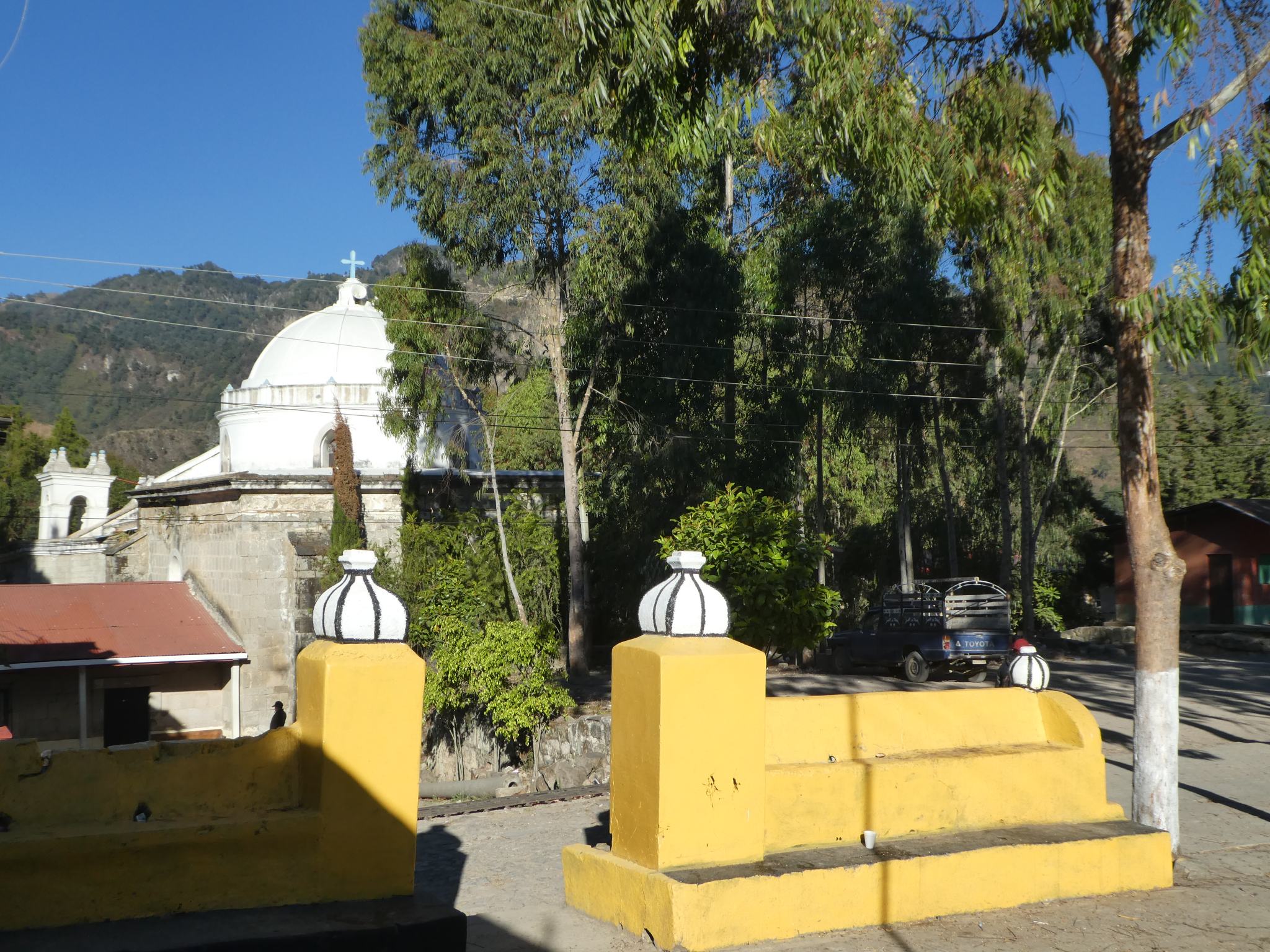 Early evening we enjoyed a temazcal.  It’s a Mayan ‘sauna’ consisting of a small enclosed space heated with coals or super-heated rocks, where you sweat out your toxins.   Traditionally they are dome shaped, although modern ones like the one we had are often block shaped.  They have a small entrance to minimise heat loss.  Lift the blanket to crawl in and you are buffeted by a blast of heat.  The door is then closed.  It’s pitch black and not high enough to stand up.  Some people find that a bit claustrophobic.  You sit in the dark and sweat.  And sweat.  And sweat. 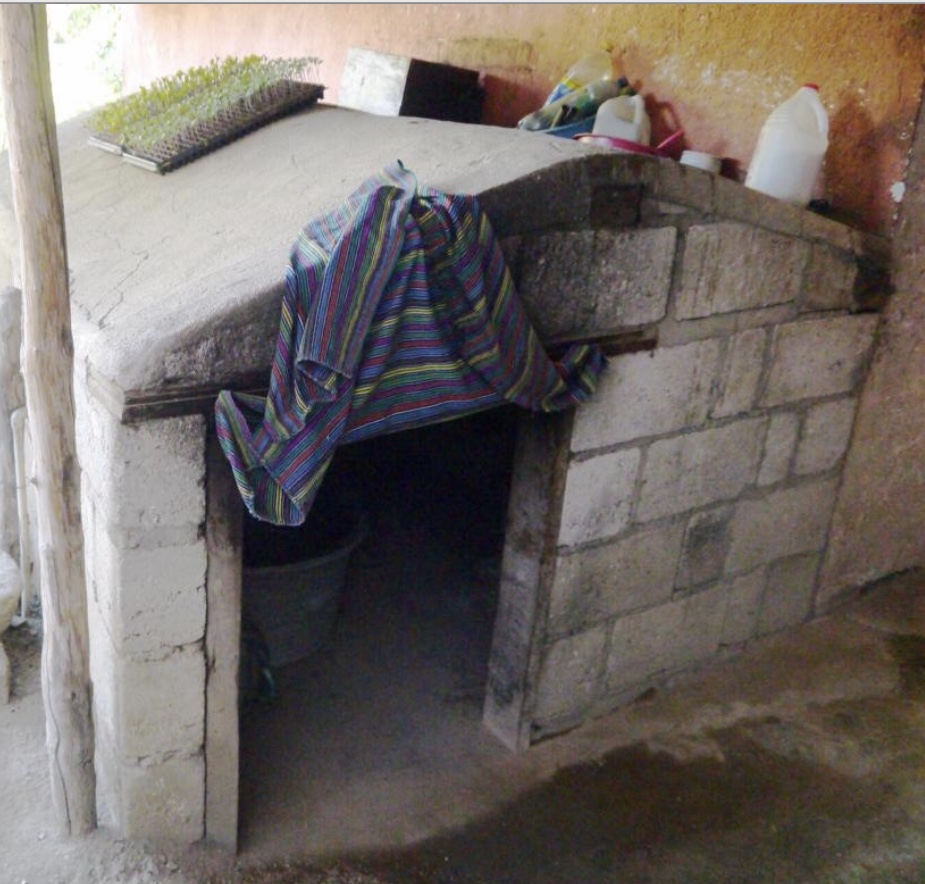 Seriously, though, it’s great for relaxing the muscles, and not a bad substitute for a shower when the only other option is a bucket of water in open air temperature of about 8 degrees Celsius.

Day 2: Antigua Santa Catarina Ixtahuacan to Xiprian:  It was a beautiful morning as we left the village, and a scenic walk along a dirt road winding gradually up. 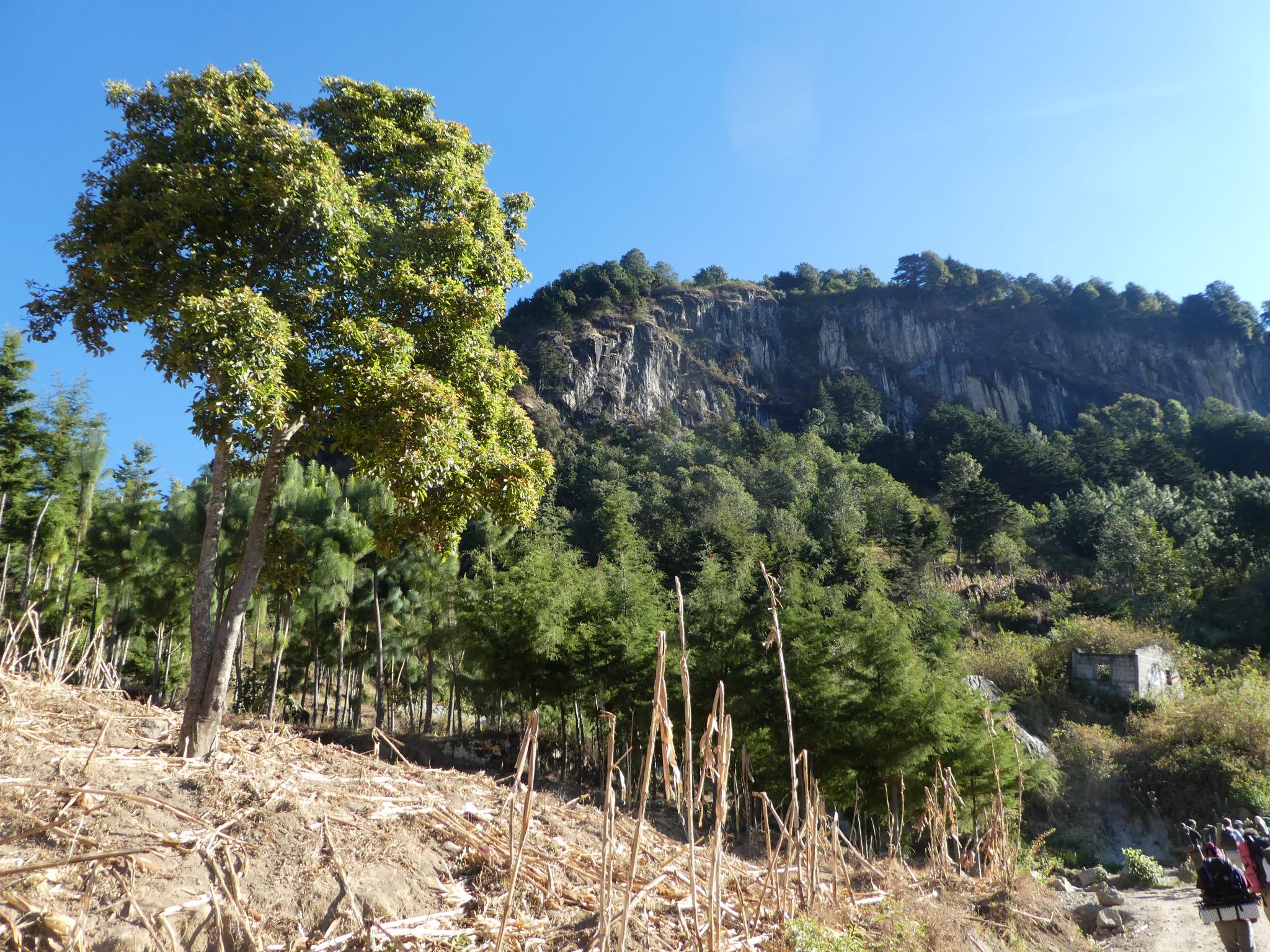 At the top of a lung challenging stretch, the vista opened up. 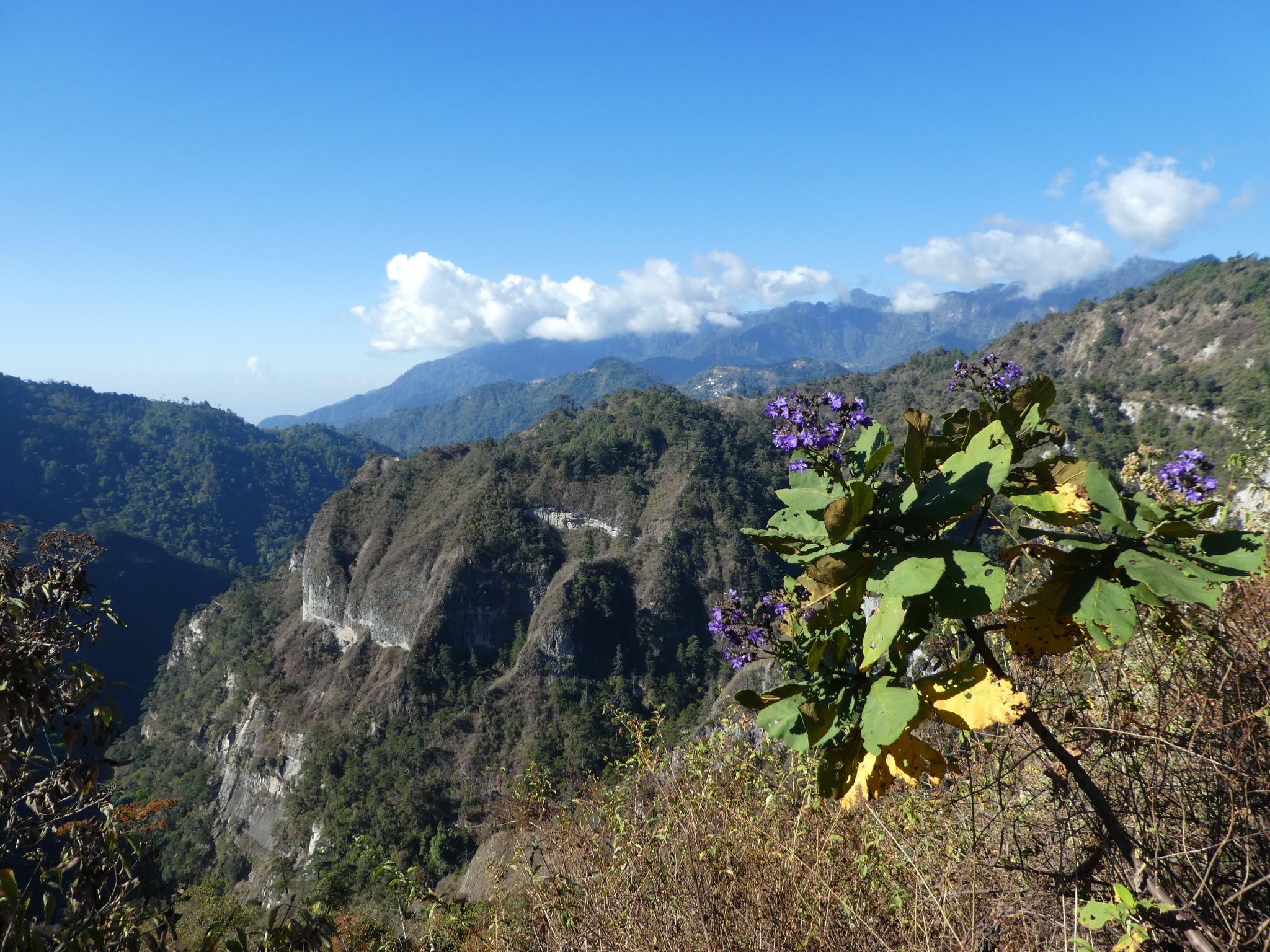 Alas, it was a false peak.  There was another brutal uphill climb, but again the reward of great views at the top. 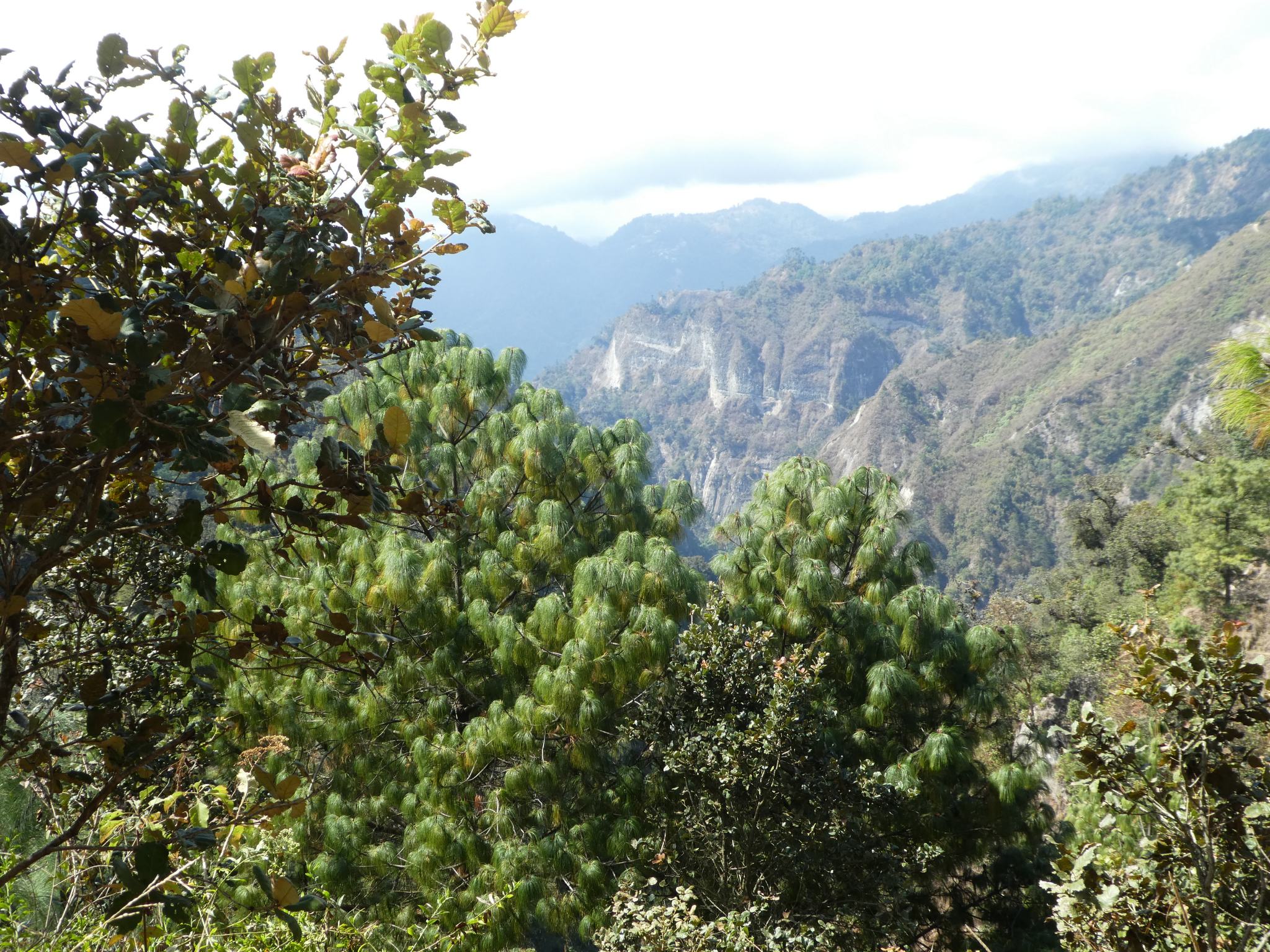 Down into the valley we walked, rock hopping across seven streams and sloshing across a few wet gravel roads. 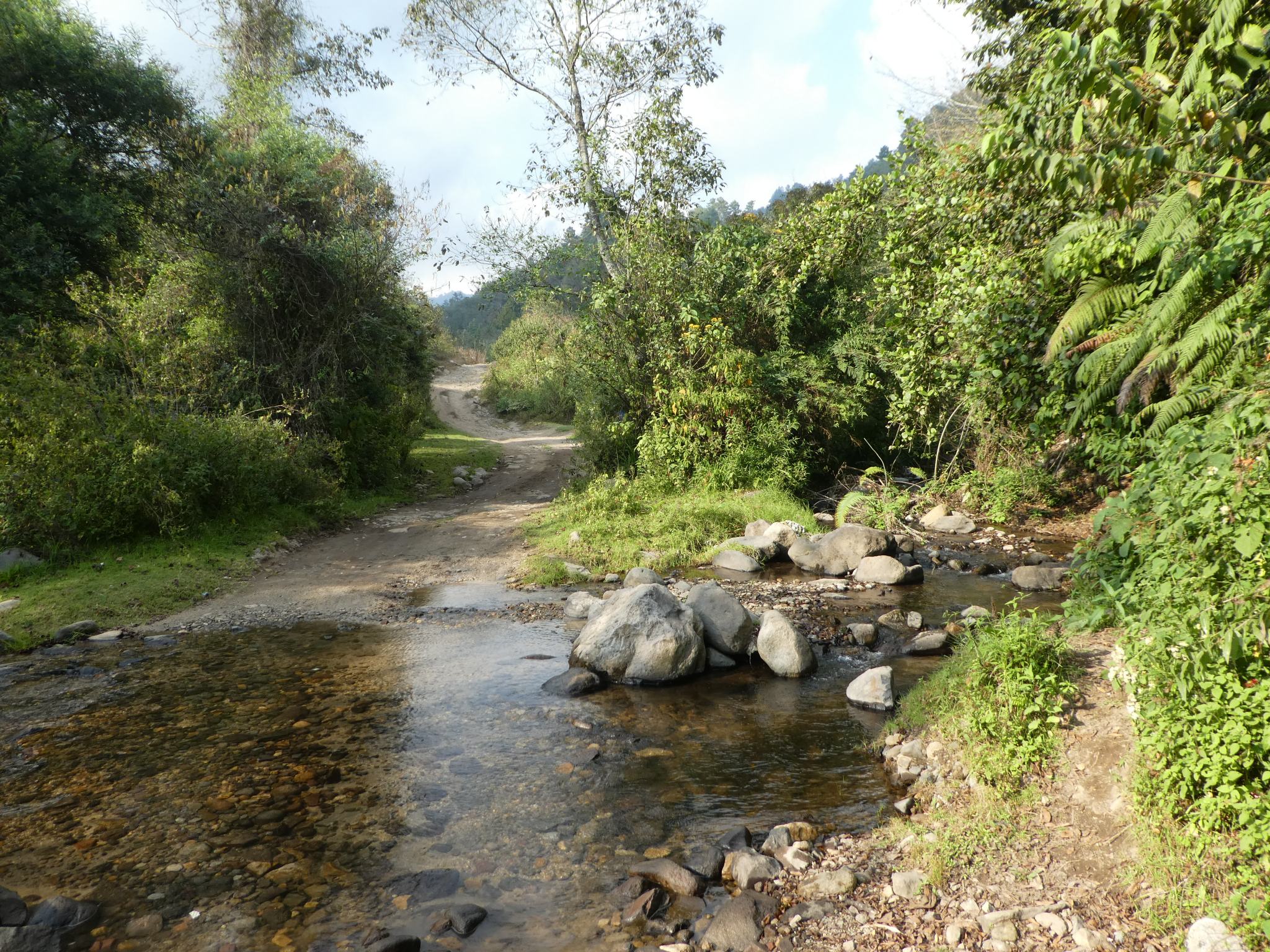 In the afternoon we walked through pea and corn fields. 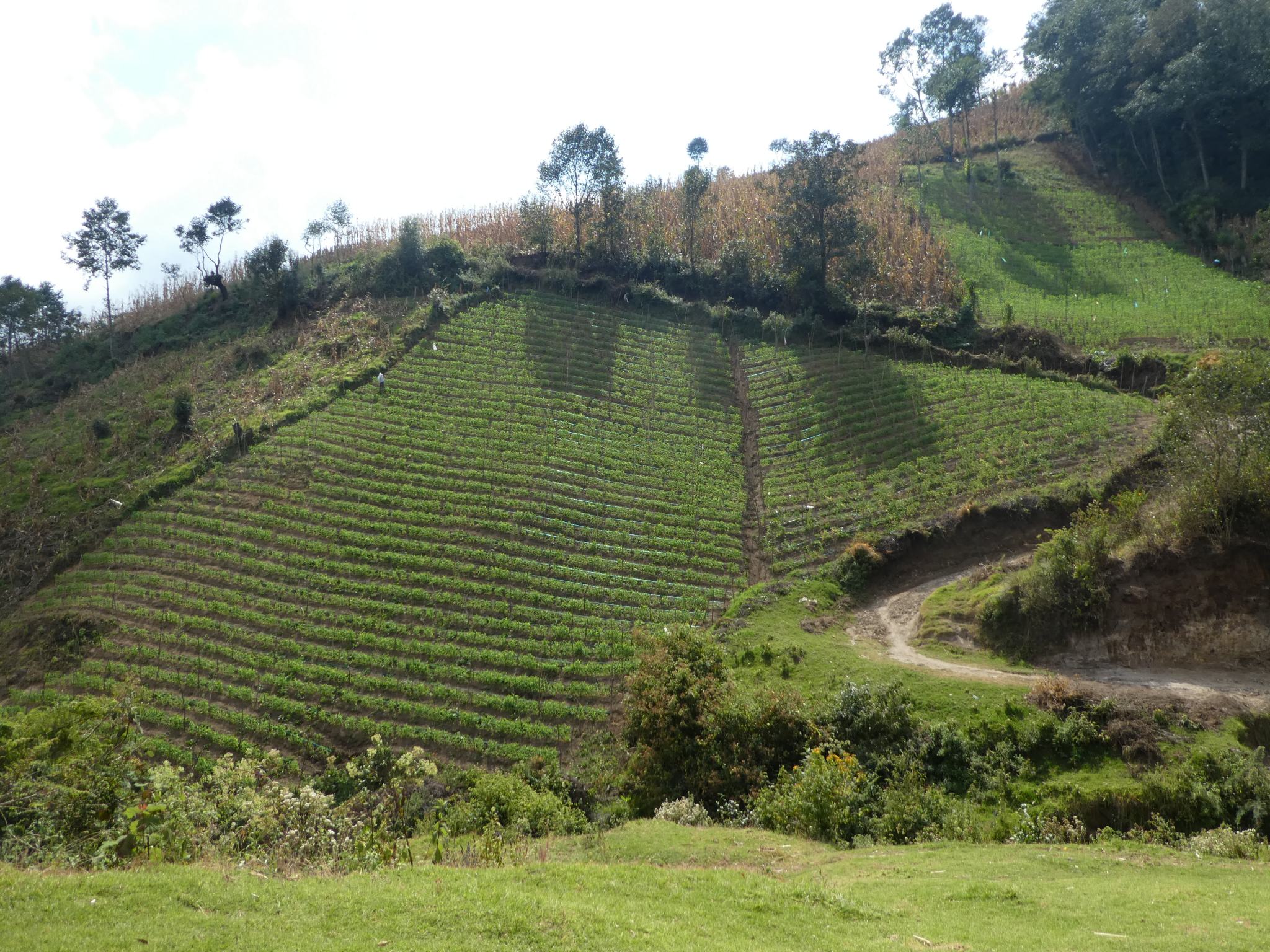 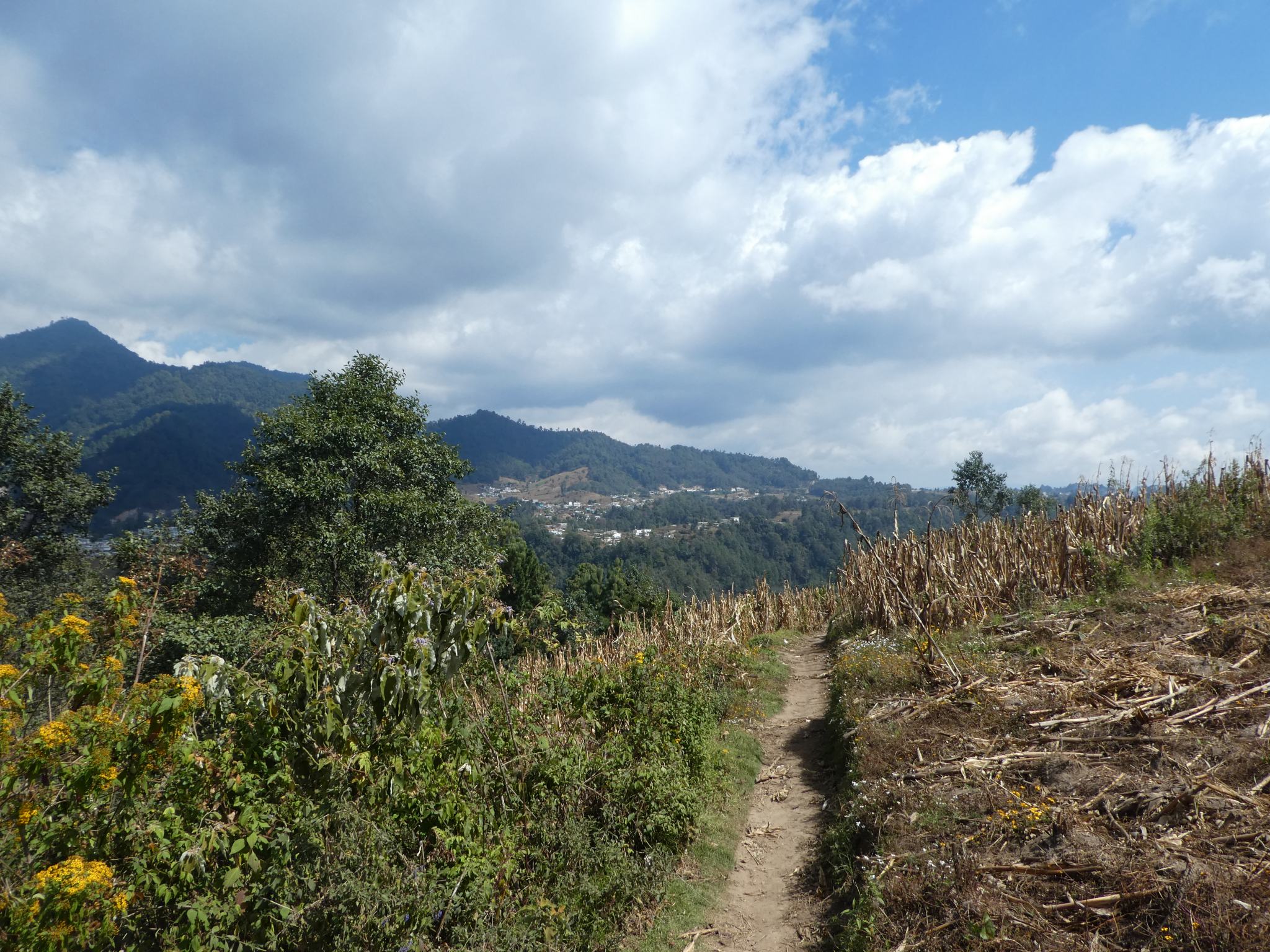 This was another 19km day and we were not unhappy to get to the end!

Day 3: Xiprian to San Pedro La Laguna:  Whoever said watching the sunrise was fun?  Well, it can be – but getting up at 3.30am in the freezing cold isn’t.  Ever.  We packed up and then hiked for about an hour to a hill top with a view across Lake Atitlan with the sun to rise near one of the volcanoes in the distance.

Snuggling back into our sleeping bags, it was tempting to go back to sleep, but Volcan Fuego was putting on a bit of light entertainment, with lava intermittently shooting up.  And constant smoke plumes appearing in the red light of pre-dawn. 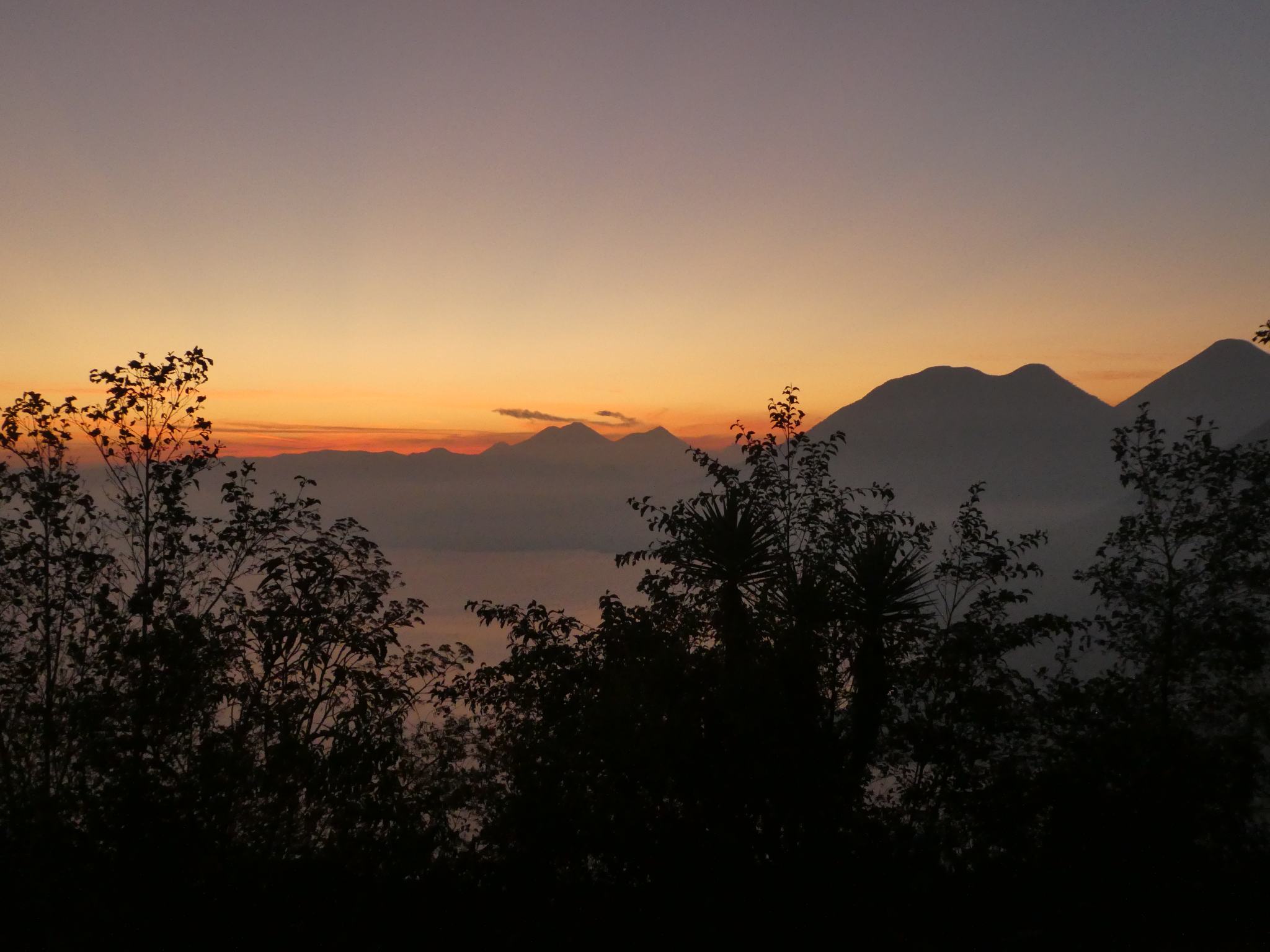 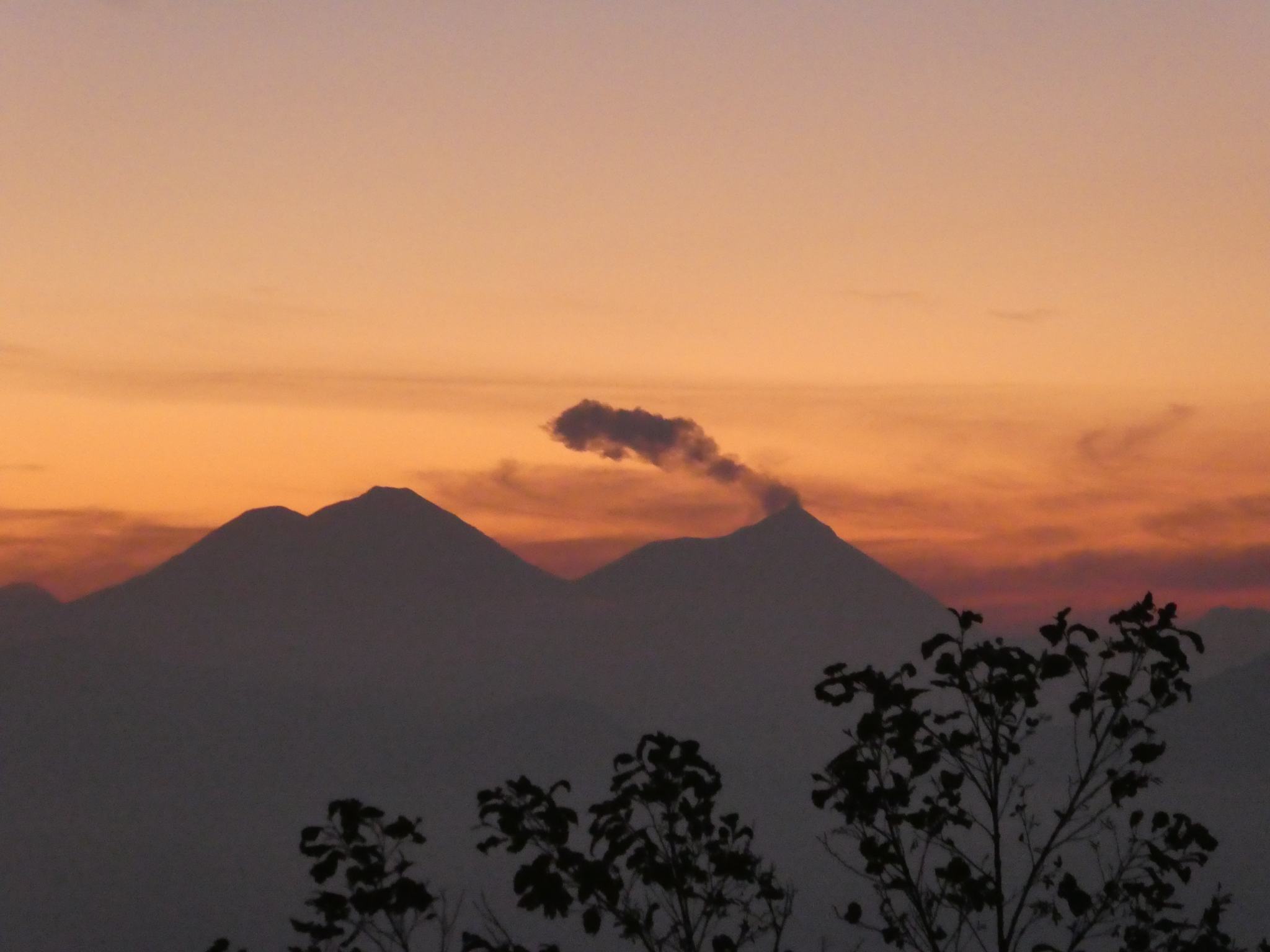 The sun rising over the lake was quite a sight. 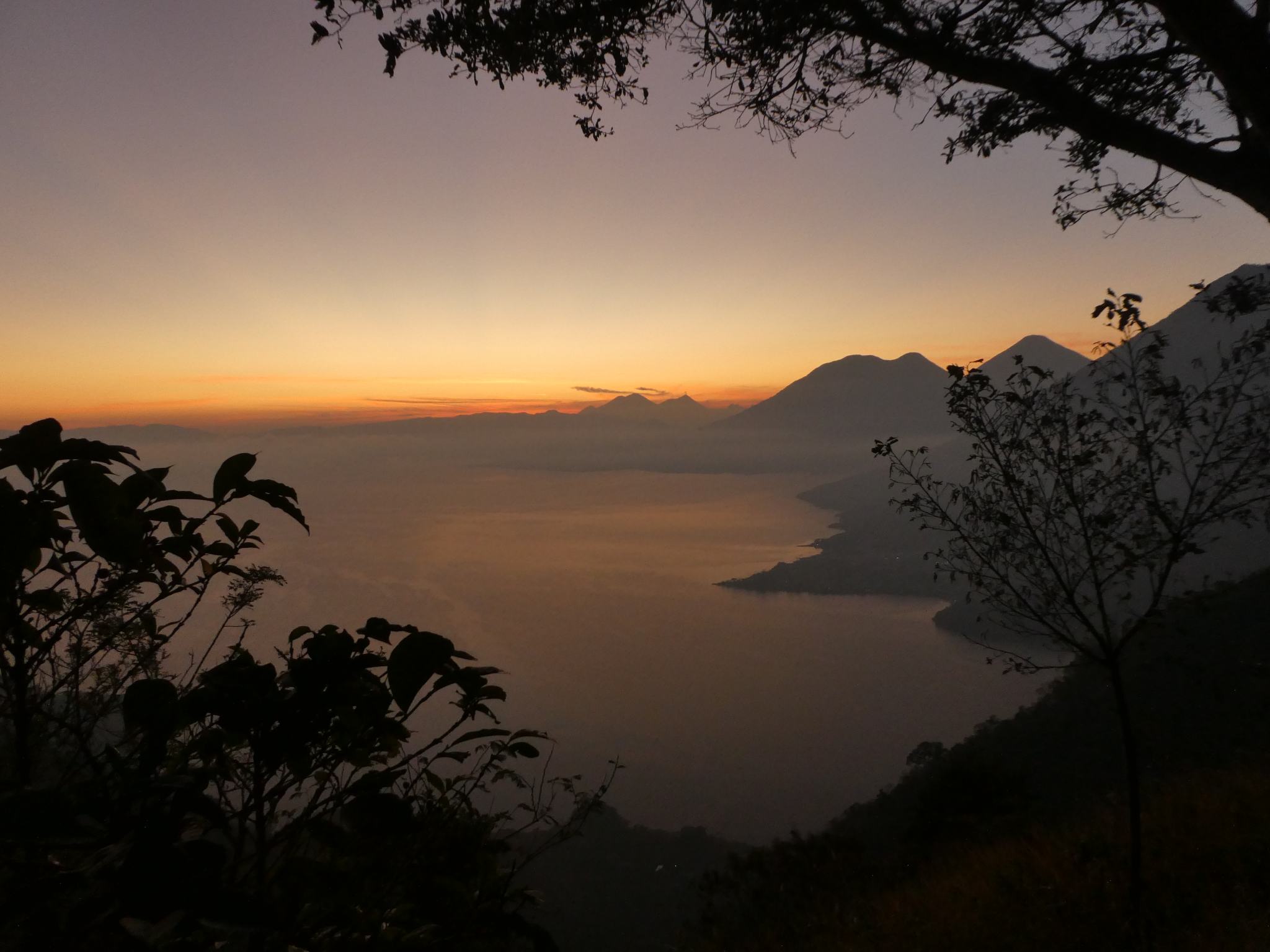 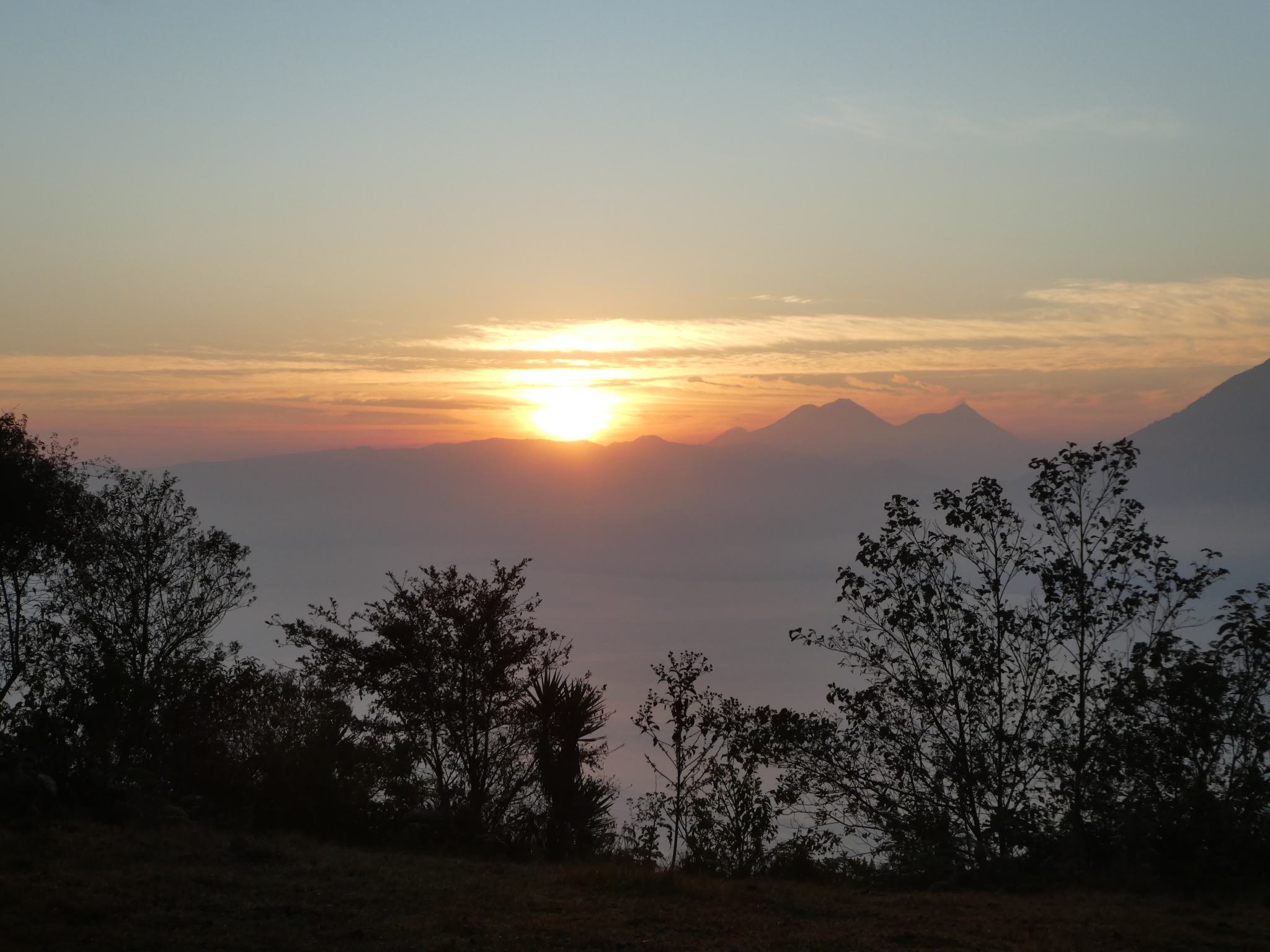 We had breakfast and then started the steep climb back to lake level.  Mid morning we reached a viewing platform high above the town of San Juan La Laguna. 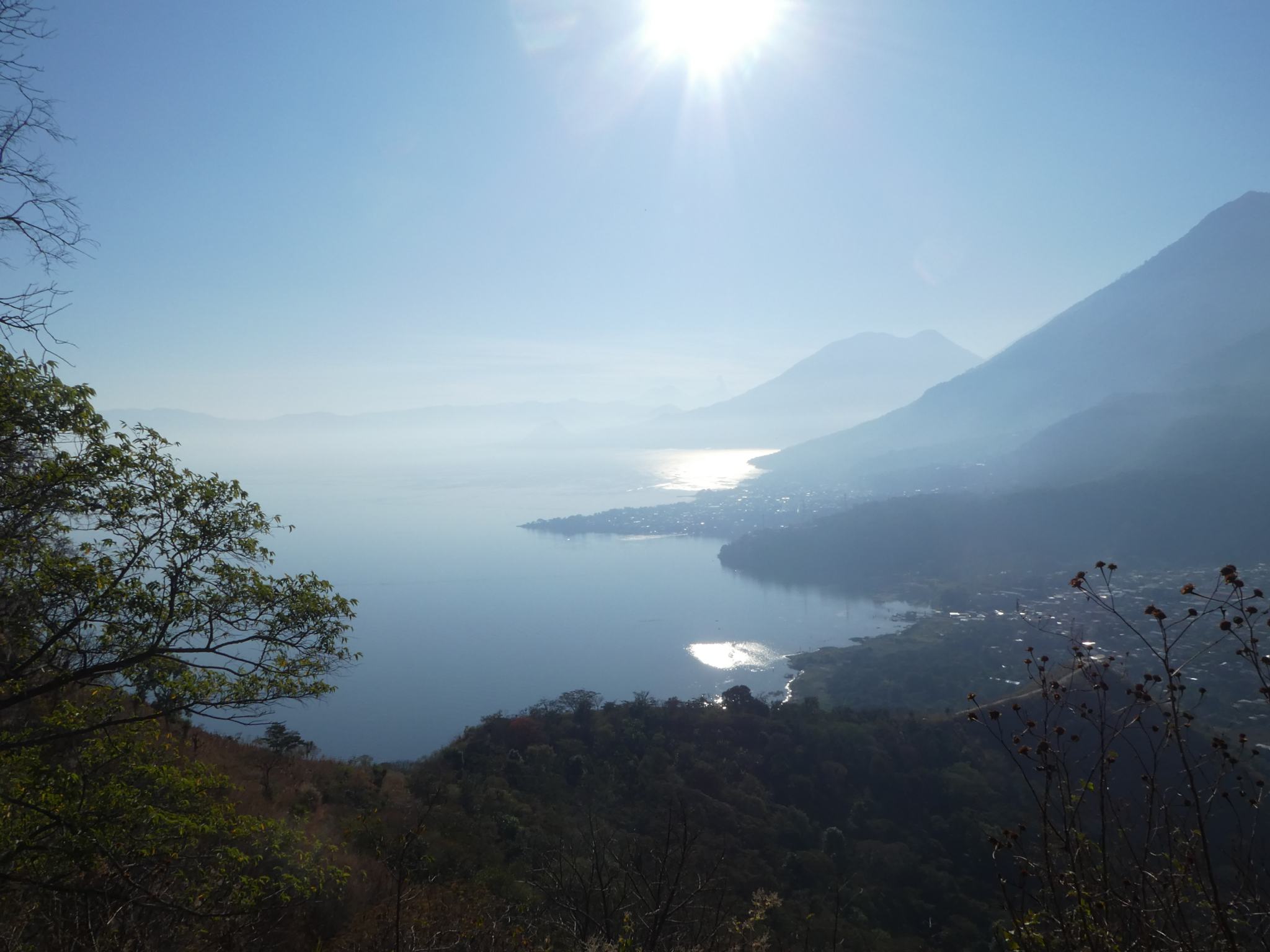 Then down to San Juan where we stopped in at a coffee processing business for a fresh coffee.  Their coffee and banana smoothie was pretty sensational! 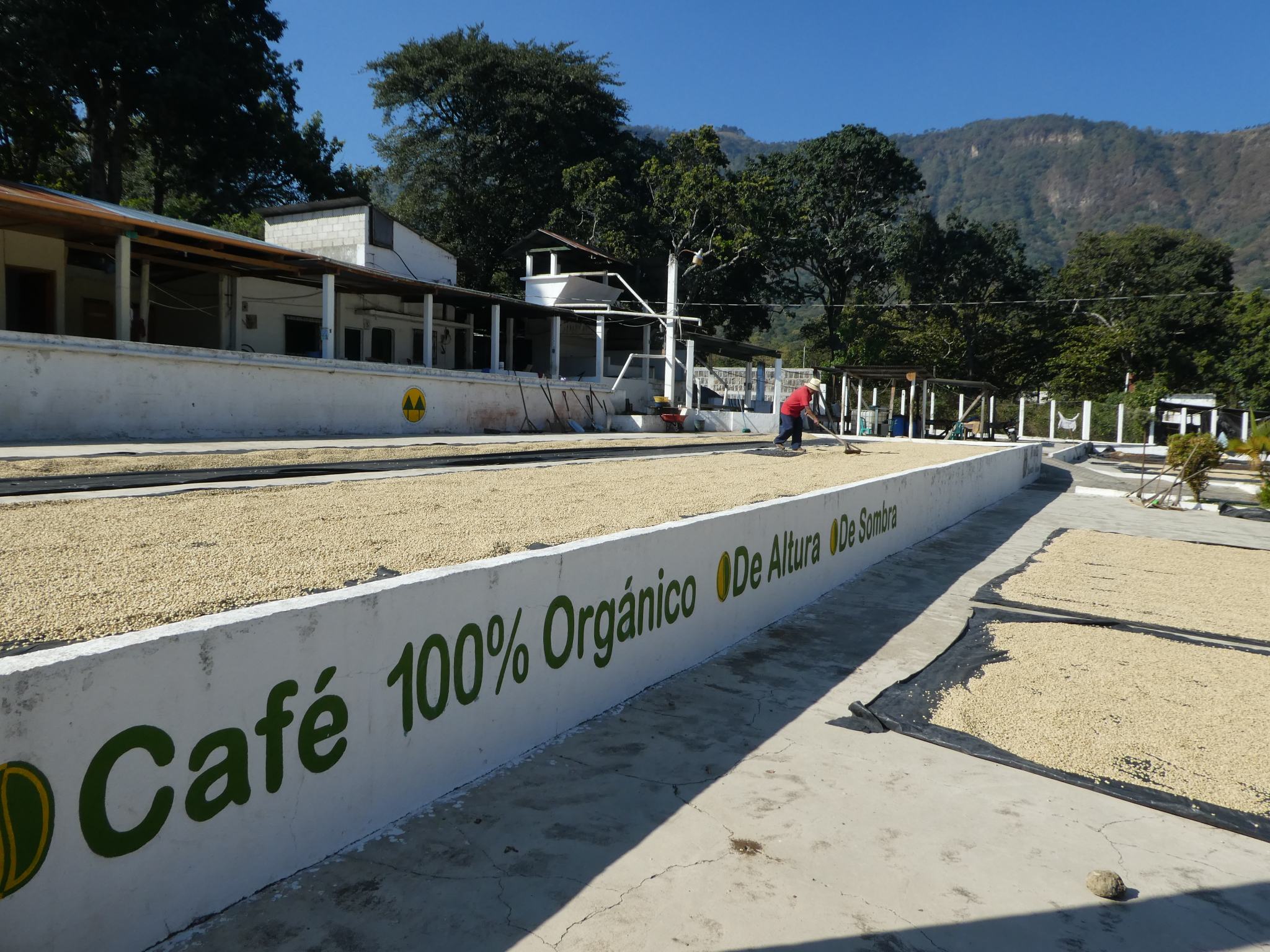 That was the end of the hike.  We drove from San Juan to nearby San Pedro standing in the back of a pick up truck.  We picked up our big packs and caught a ferry across the lake, then a bus to Antigua for our last night in Guatemala.