It’s been almost five years since we were in Oaxaca, and the gentrification that’s occurred in the interim is remarkable.  We remembered it as a scruffy, slightly grungy place with lots of food carts and open air markets.  Now, many of the churches have been scrubbed and the colonial centre is clean and bright. 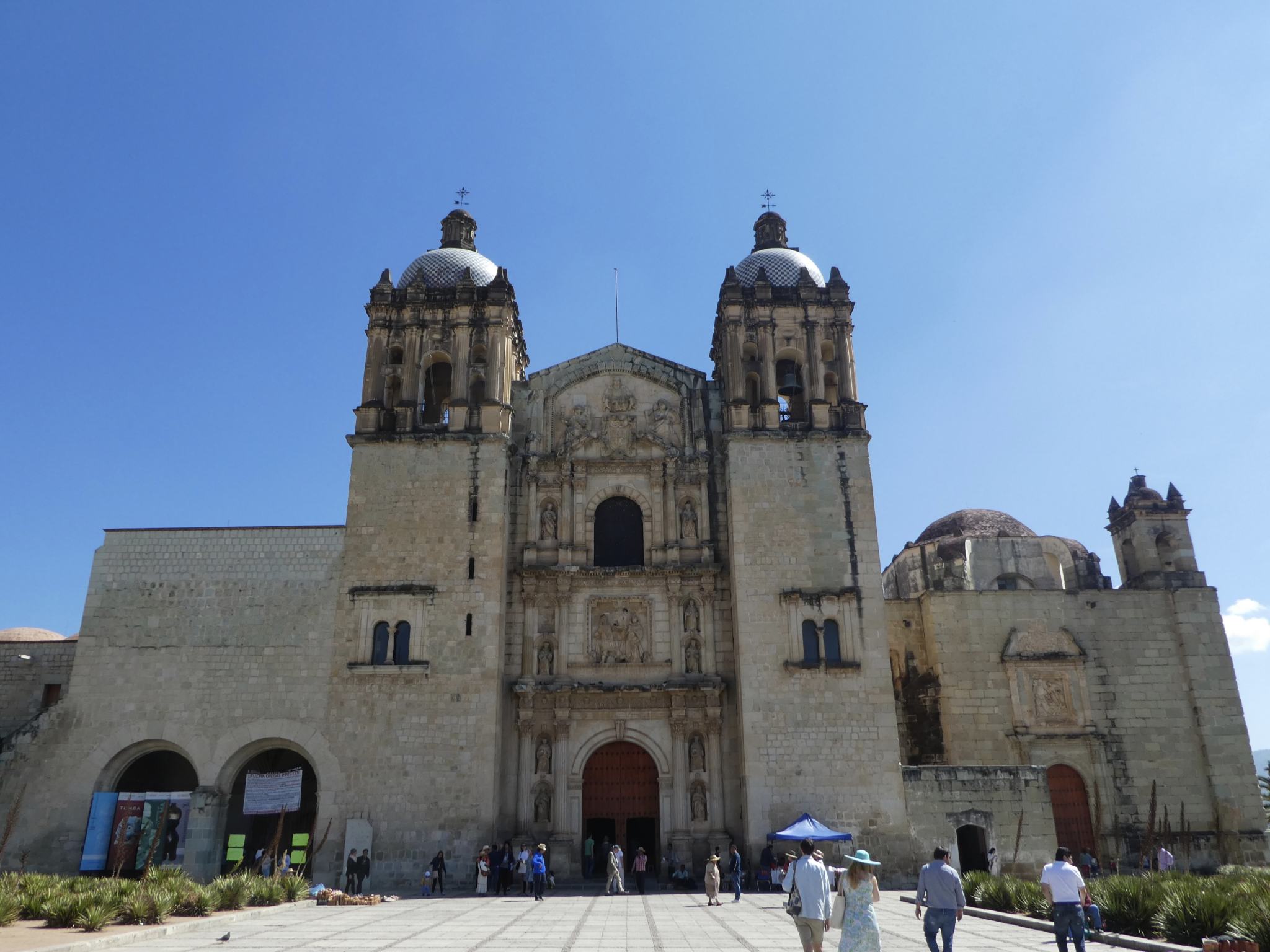 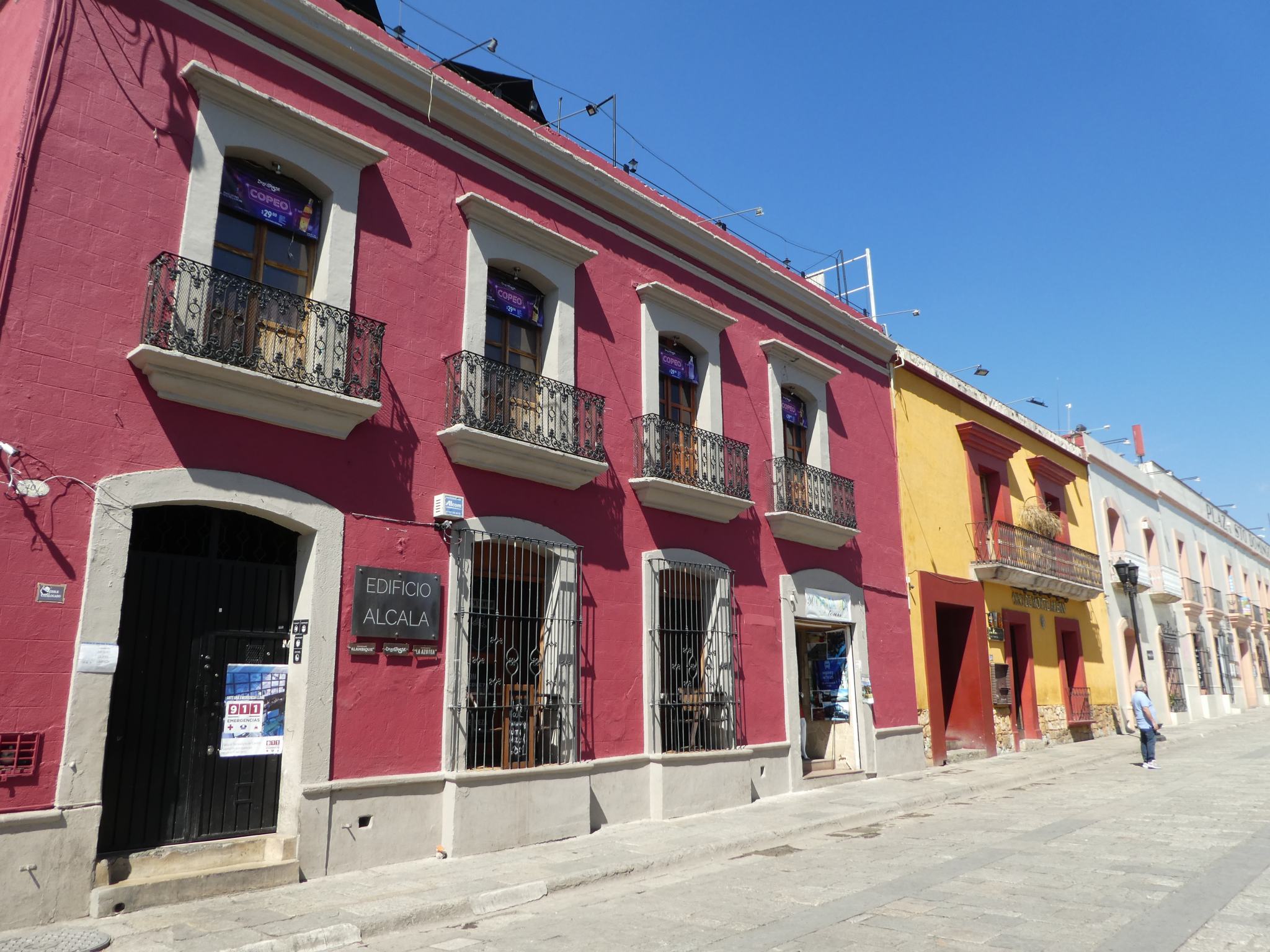 The covered markets are a lot more sanitised and there are lots of trendy boutiques and coffee bars, but there are still lots of food carts and you can still buy chapulines (fried grasshoppers with a light dusting of chilli powder) from stands around town. 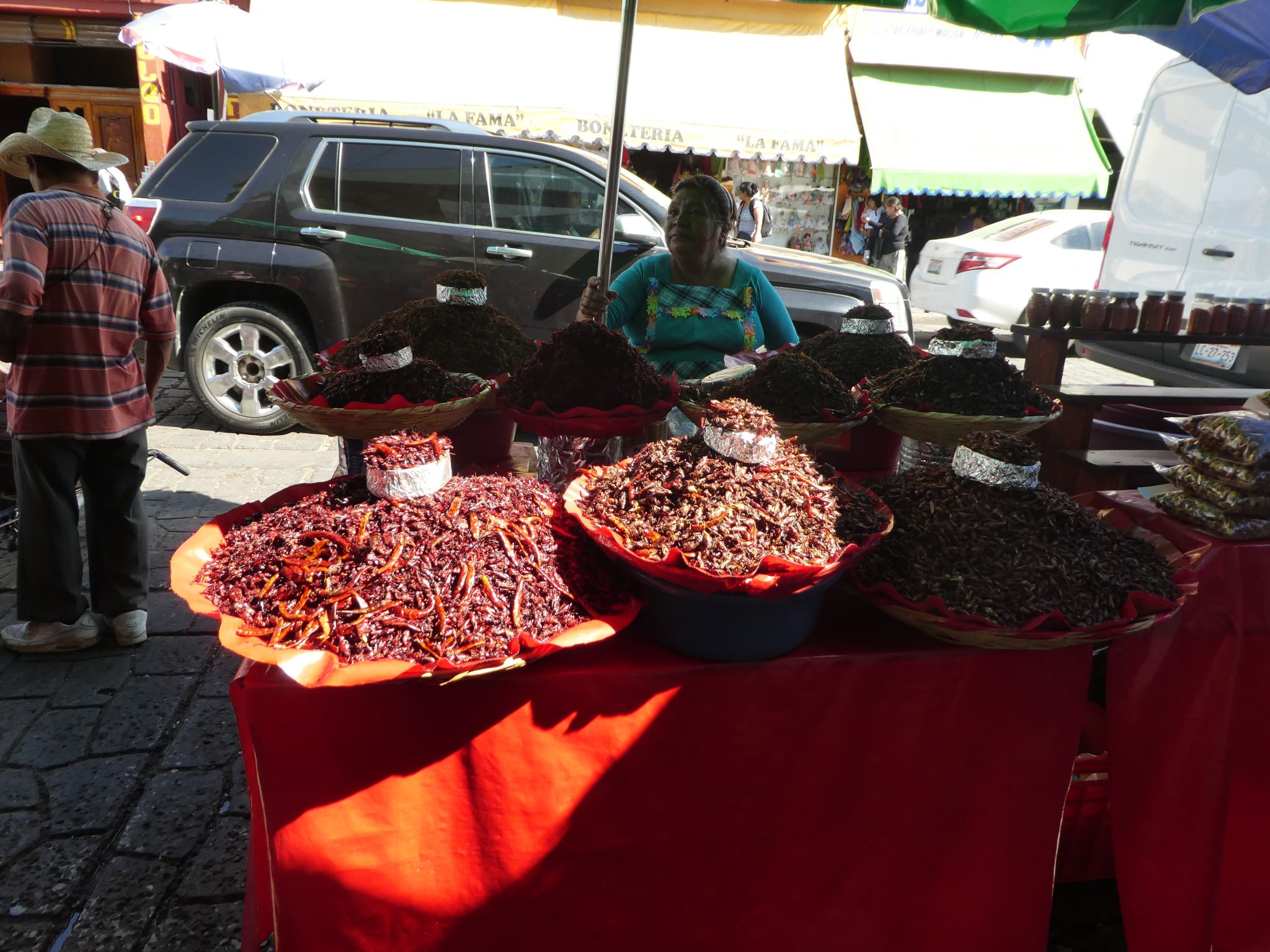 Oaxaca is the epicentre of mezcal production but when we were last here there were only a few dedicated mezcal bars around.  Now they are everywhere, and that is not a bad thing! 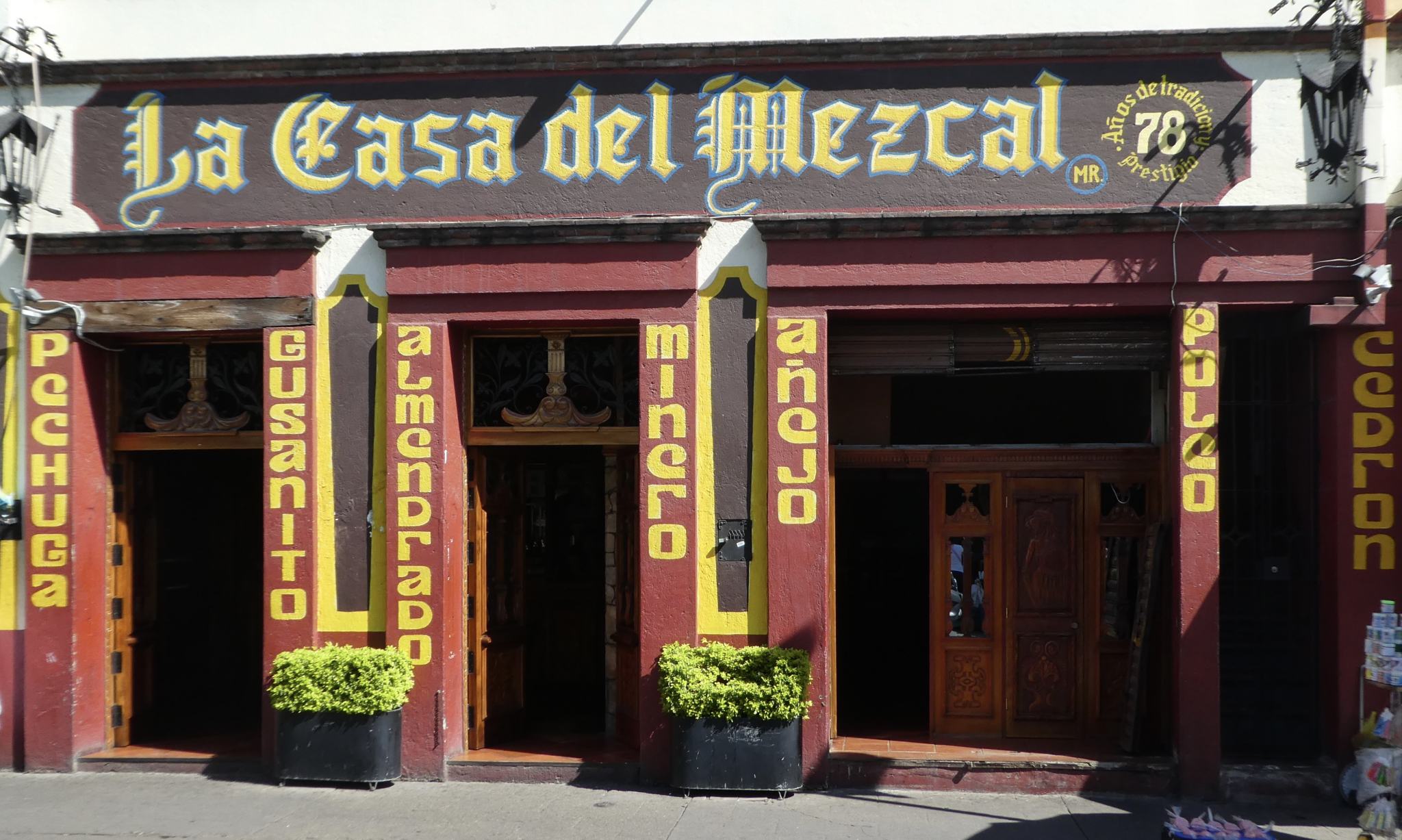 We re-visited Los Amantes.  Here, in 2015, we’d learned the hard way that mescal is to be respected.  It offers tasting flights which are a good way to sample a few if you don’t know what you might like.  And then you can always have another of the one you like the best, while listening to a guy with an amazing voice belting out Mexican classics.  We didn’t know the songs, but others were singing along, so we guess they must have been well known ones. 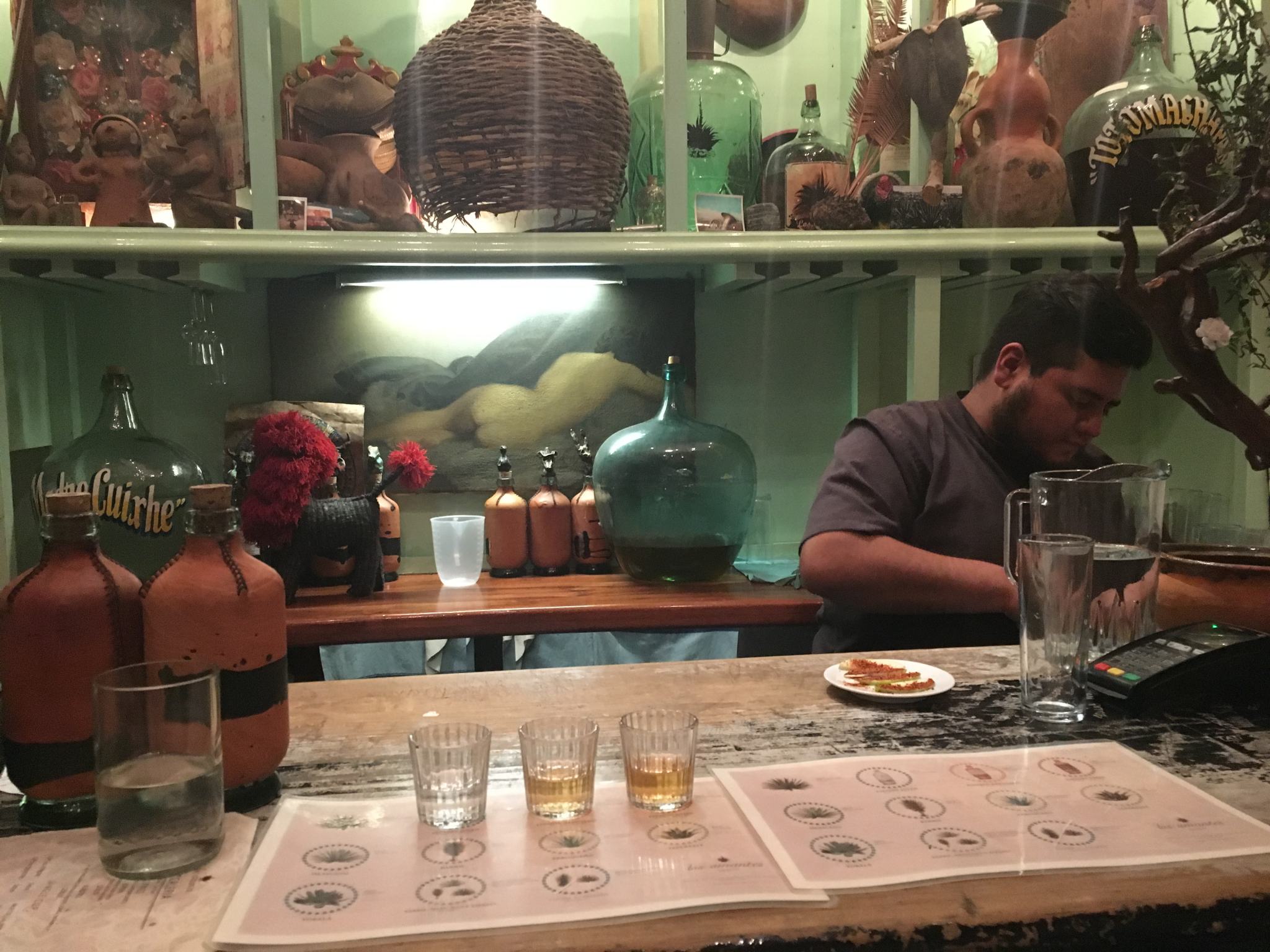 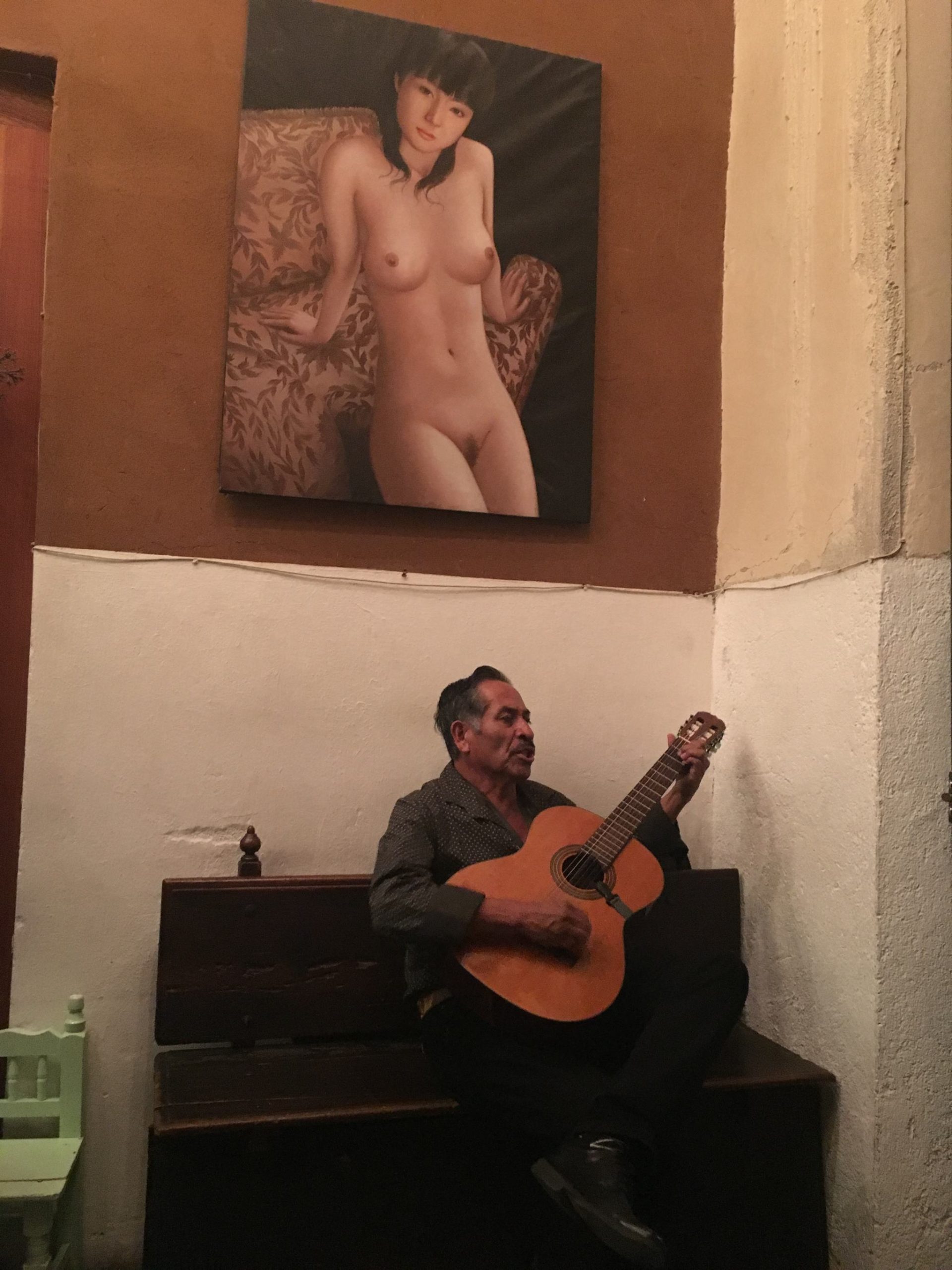 Moderation prevailed, however, as we were here to do a four day hike in the Pueblos Mancomunados.

The Pueblos are a group of eight villages in the Sierra Norte mountains which have formed a co-operative arrangement to develop eco-tourism activities to attract visitors to their region.   A network of hiking trails criss-cross the mountains between the villages and six of the eight villages have cabanas in which hikers can stay overnight.  The cabanas are plain but comfortable, and the ones we stayed in had a good bed, private bathroom and a wood fireplace.

You can hike independently or with a guide, and do anything from a day hike to seven days through all the villages.  We chose a four day hike called the ‘Sierra Extrema’.  Sounds bad, but although it wasn’t a stroll in the park, it wasn’t ‘extreme’ either.

Day 1 – Cuajimoloyas to Llano Grande:  We started hiking from Cuajimoloyas, a village perched at 3,200 metres about an hour’s drive from Oaxaca. 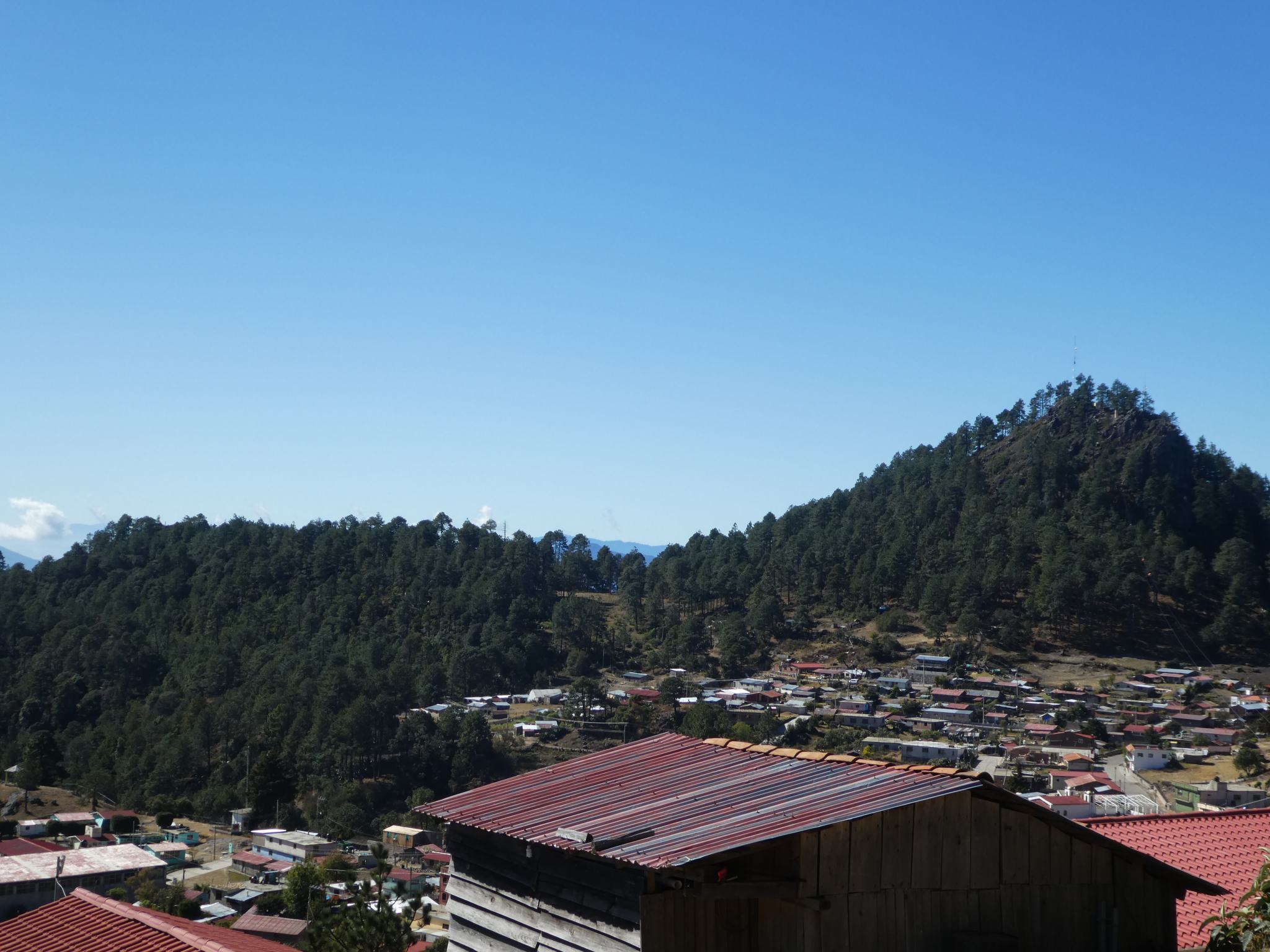 The first day was a leisurely 8km walk, mostly through rural countryside with enormous wild agave plants along the way with incredible flower stalks. 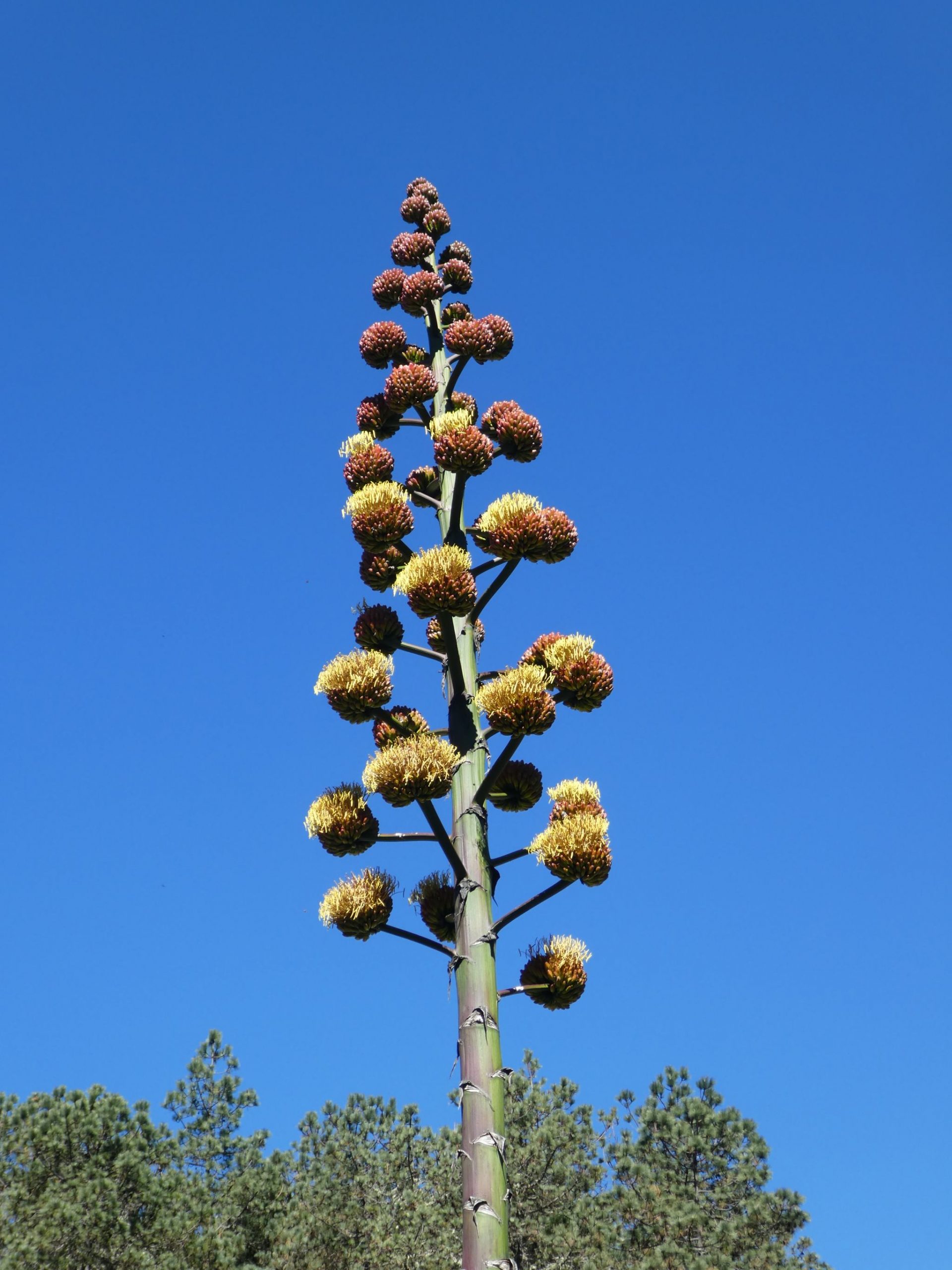 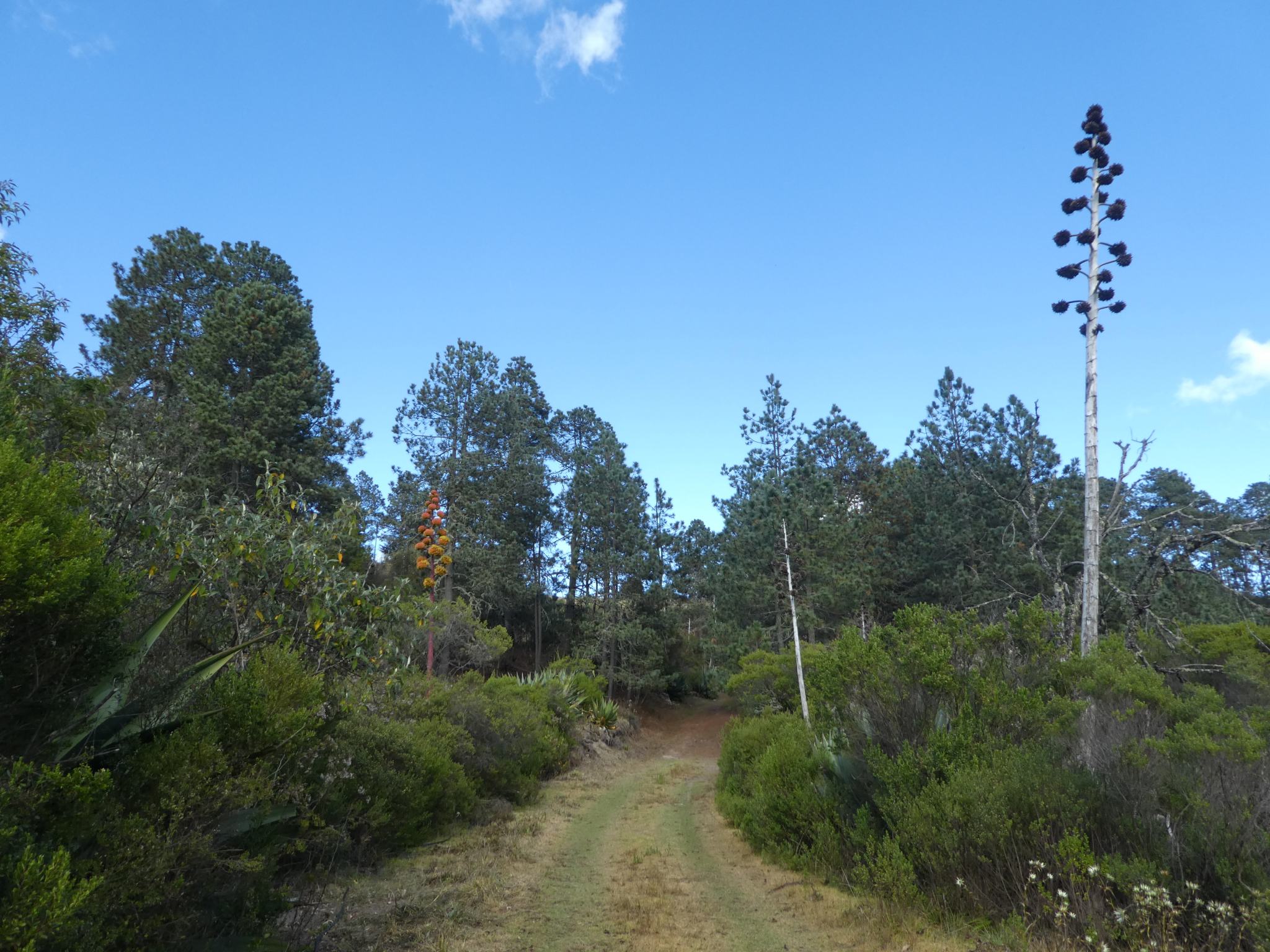 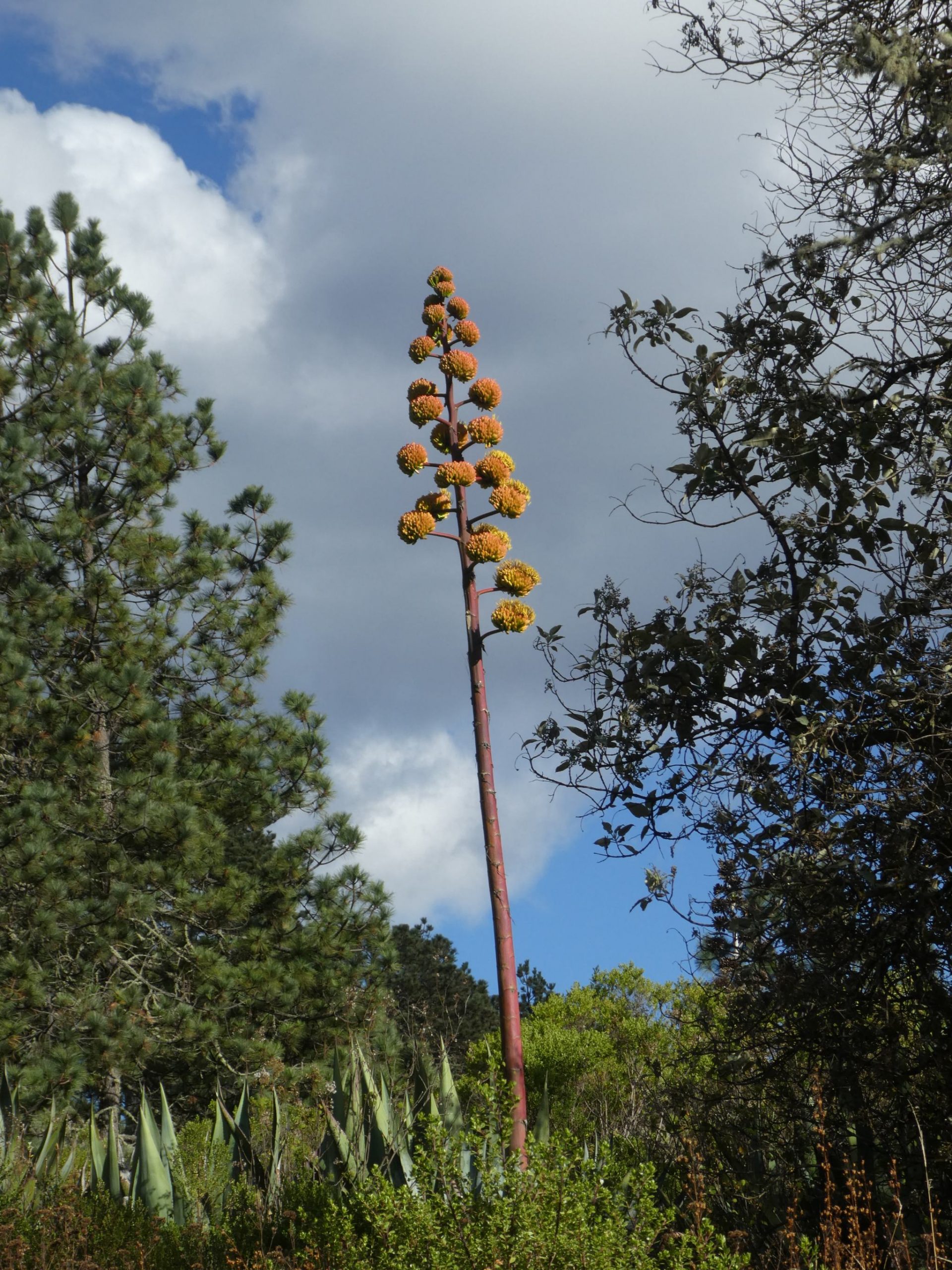 Day 2 – Llano Grande to Amatlan:  Llano Grande is perched at an altitude of 3,050 metres.  Amatlan is down at 2,040 metres and although the 23km between them is a solid distance to cover in a day, we were told this was just a steady downhill trail.  It isn’t.  In fact, for the first couple of hours the trail climbs, and although none of it is brutally steep, at +3,000 metres, the lower oxygen levels are sapping.

Then for most of the day the trail is quite flat.  It isn’t a particularly scenic bushland, but there’s some good views from the high points. 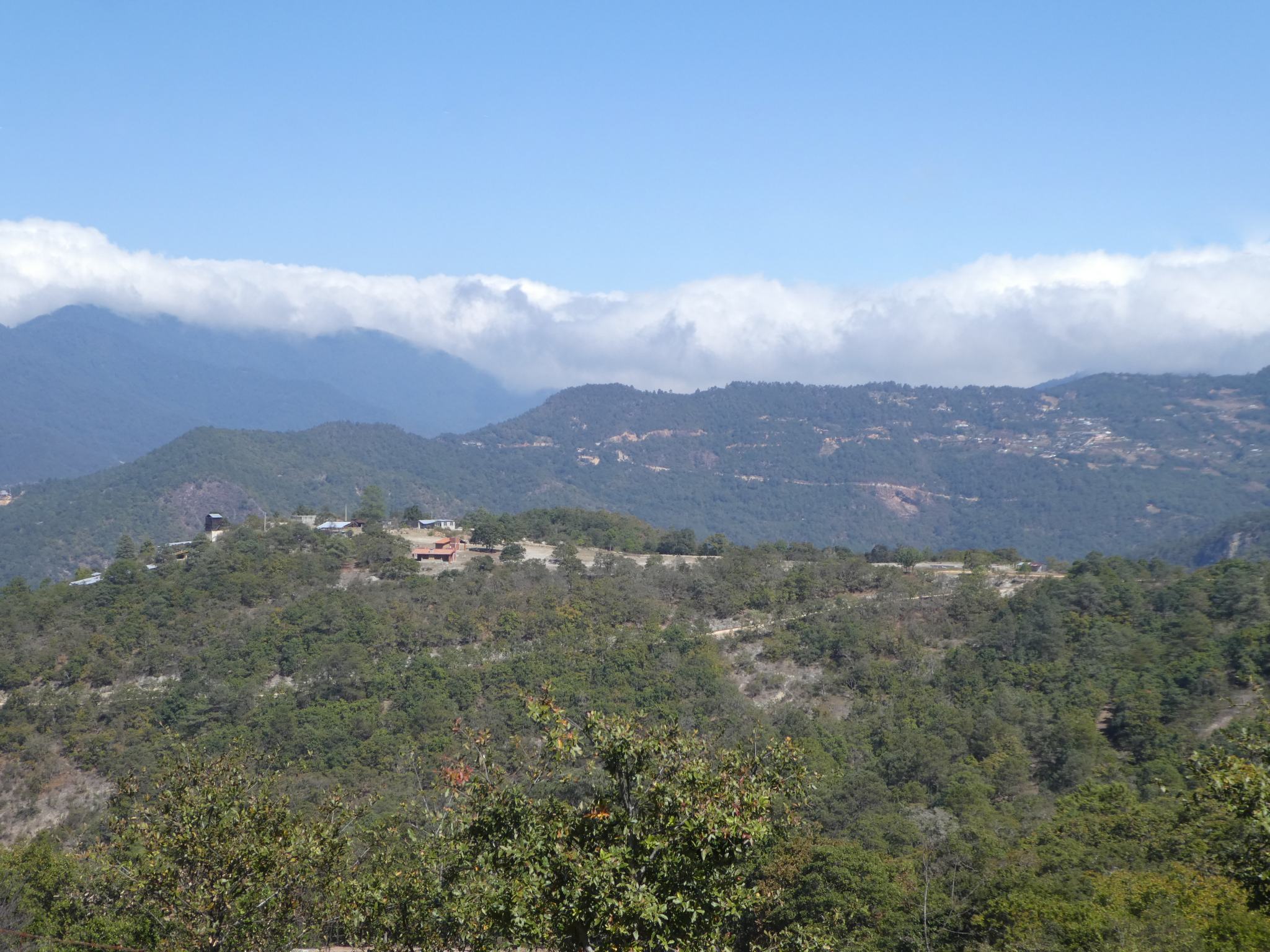 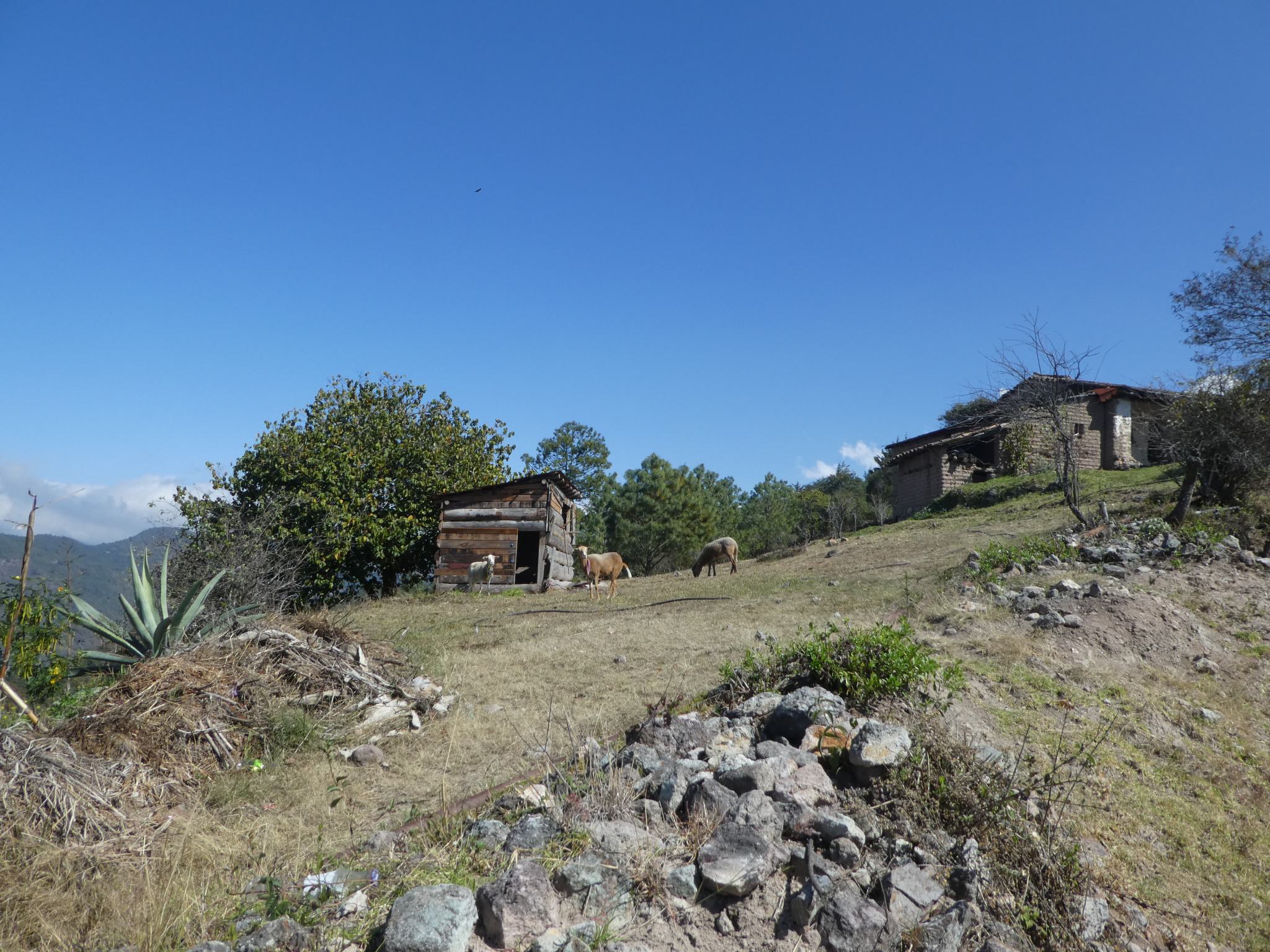 So where’s the elevation drop of +1,000 metres?  Approximately, all in the last hour.  Steeply down a rocky path which looks like it is probably a cascade in the wet season.

We made reasonably good time and arrived by mid afternoon, but our feet and knees were protesting vigorously by the end.  The cabins were a welcome sight! 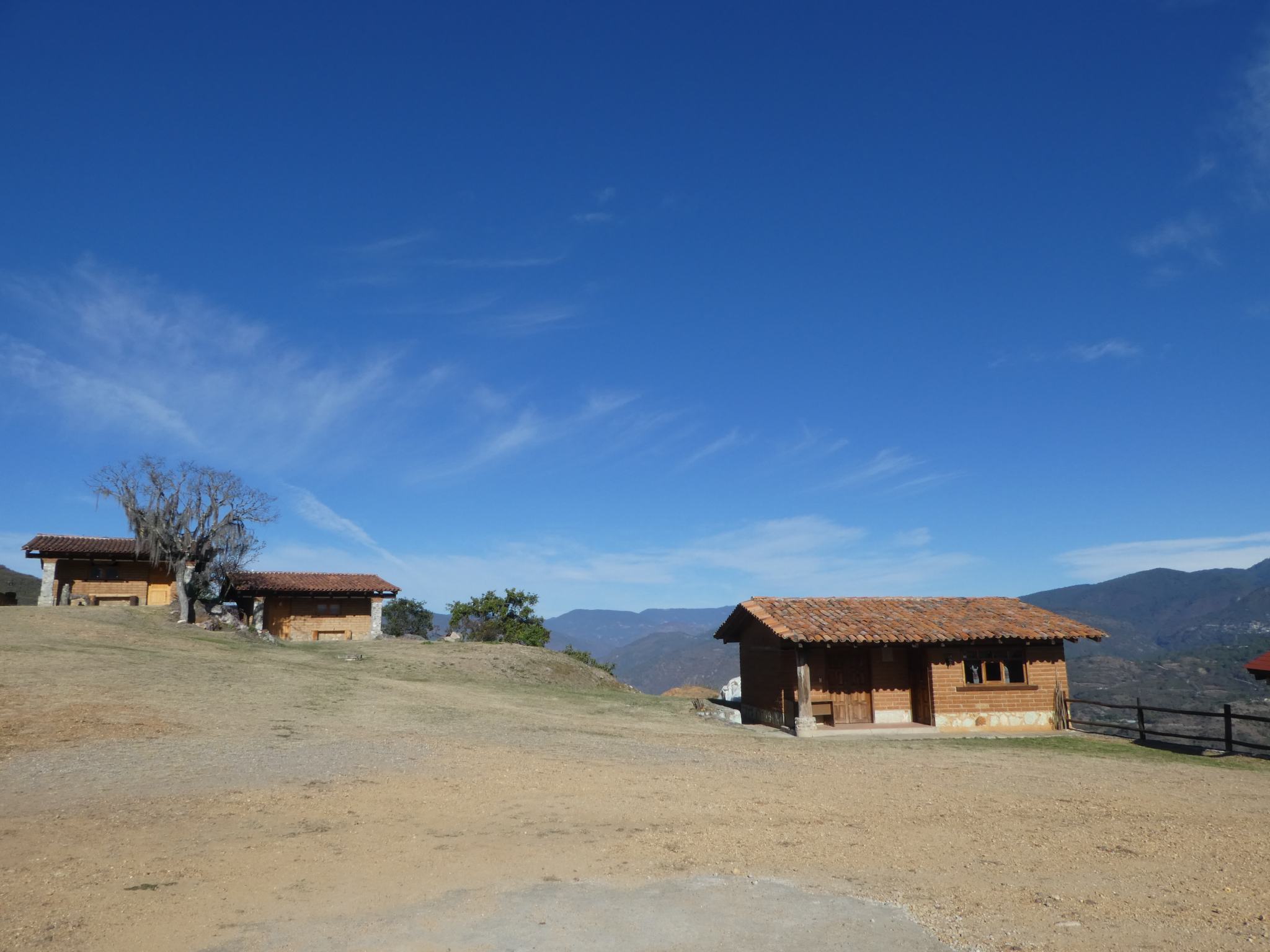 Day 3 – Amatlan to Latuvi:  This was our favourite day of the hike.  The trail follows a section of the pre-Hispanic path which once linked the Zapotec cities of the Central Valley (ironically, a plateau) with the Gulf of Mexico.

We hiked a little way up to get out of Amatlan, then followed a steady path down into a canyon where the vegetation was very different from the dry forest higher up.  The trees were covered in old man’s beard and the path looked magical. 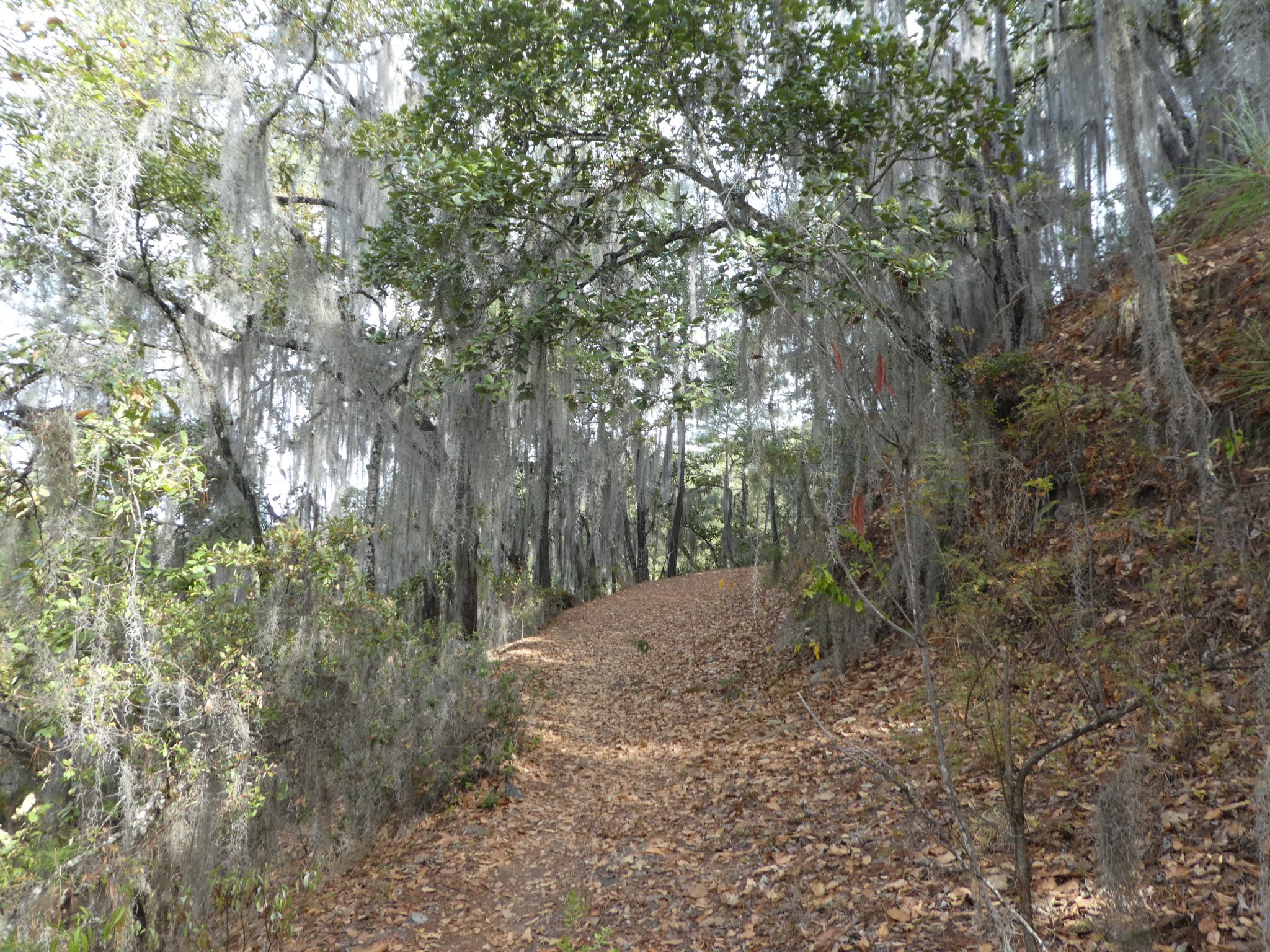 We followed the course of a small river in the base of the canyon, crossing back and forth.  There were lots of bromeliads and some small orchids. 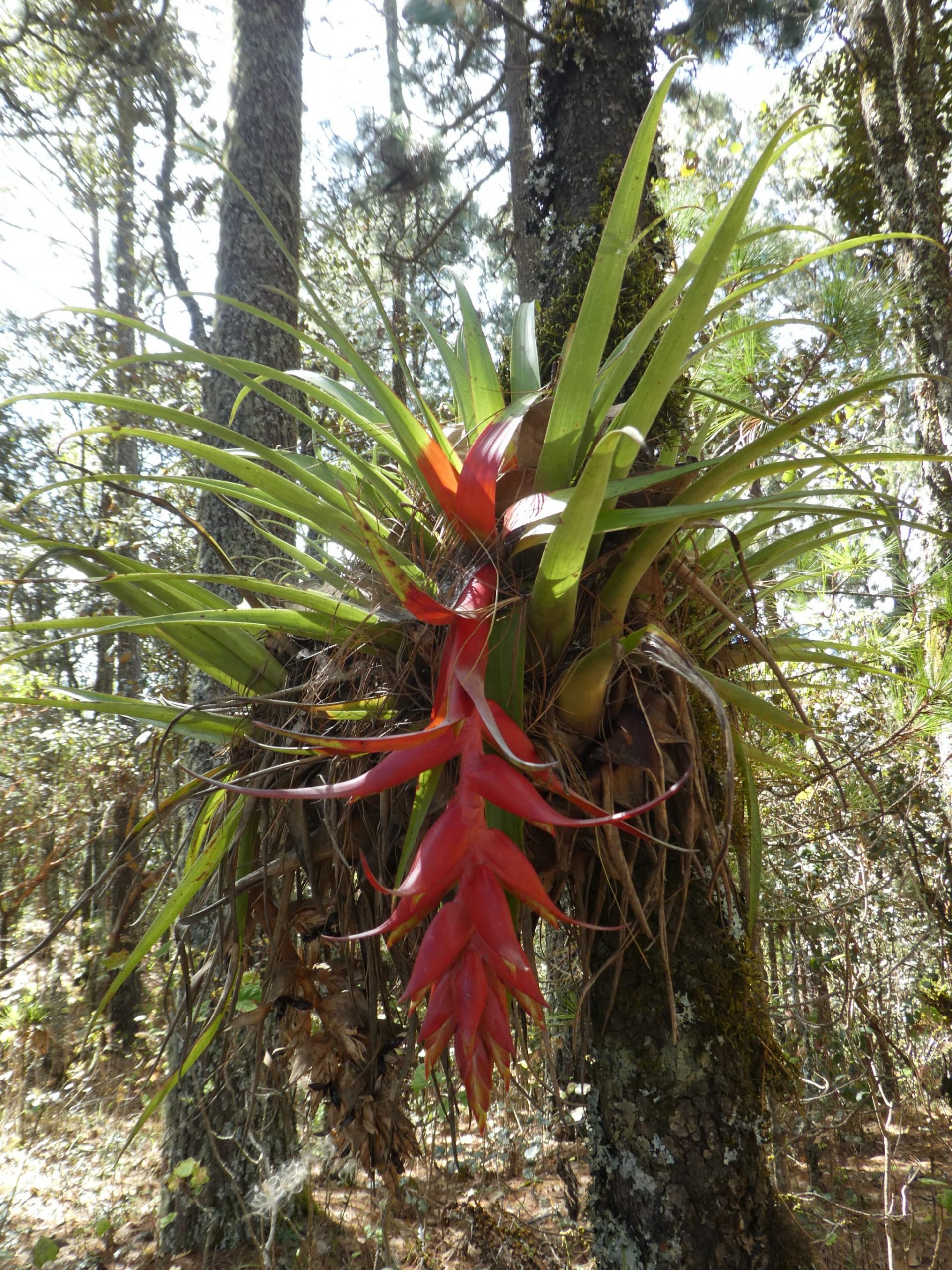 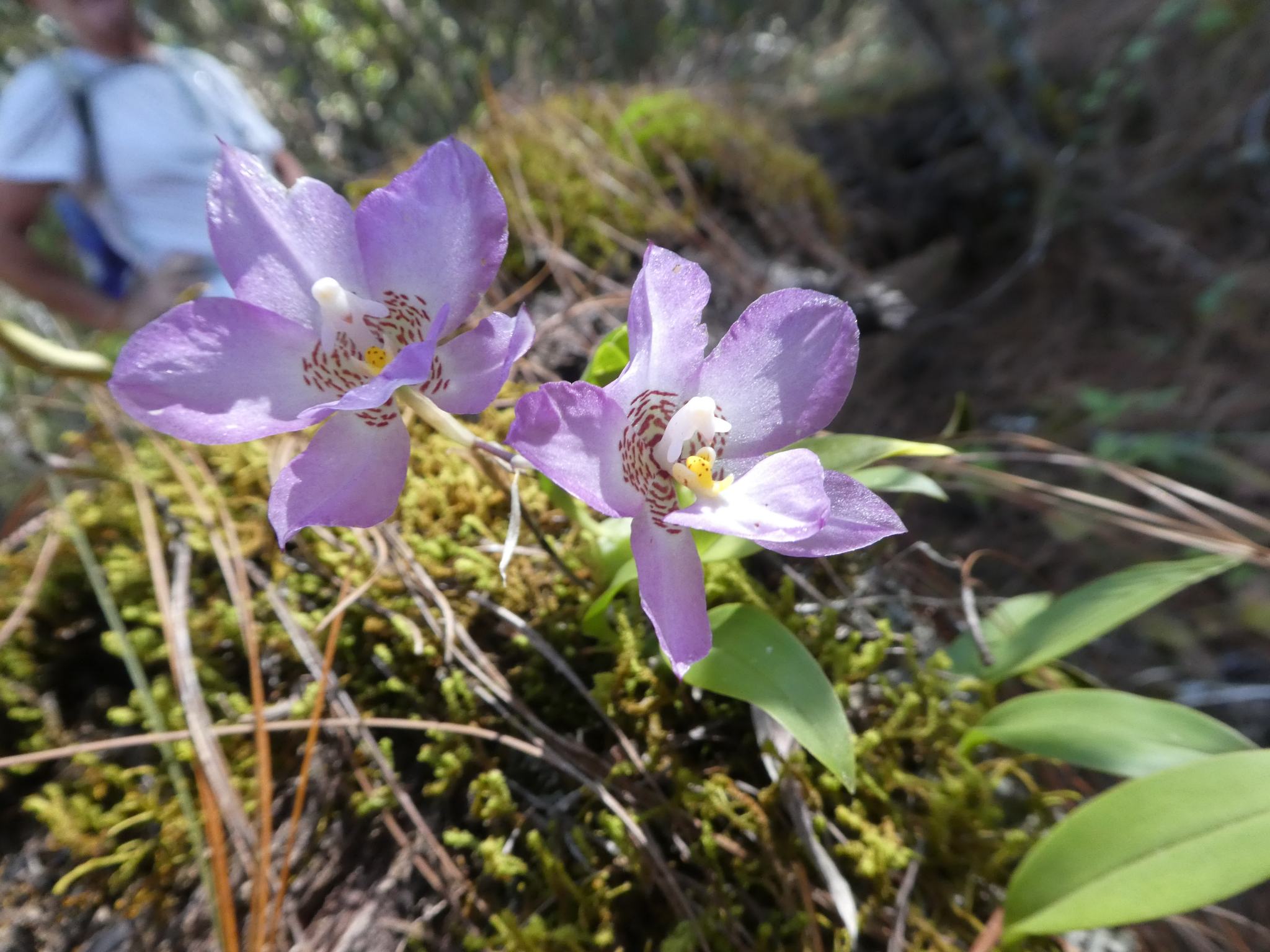 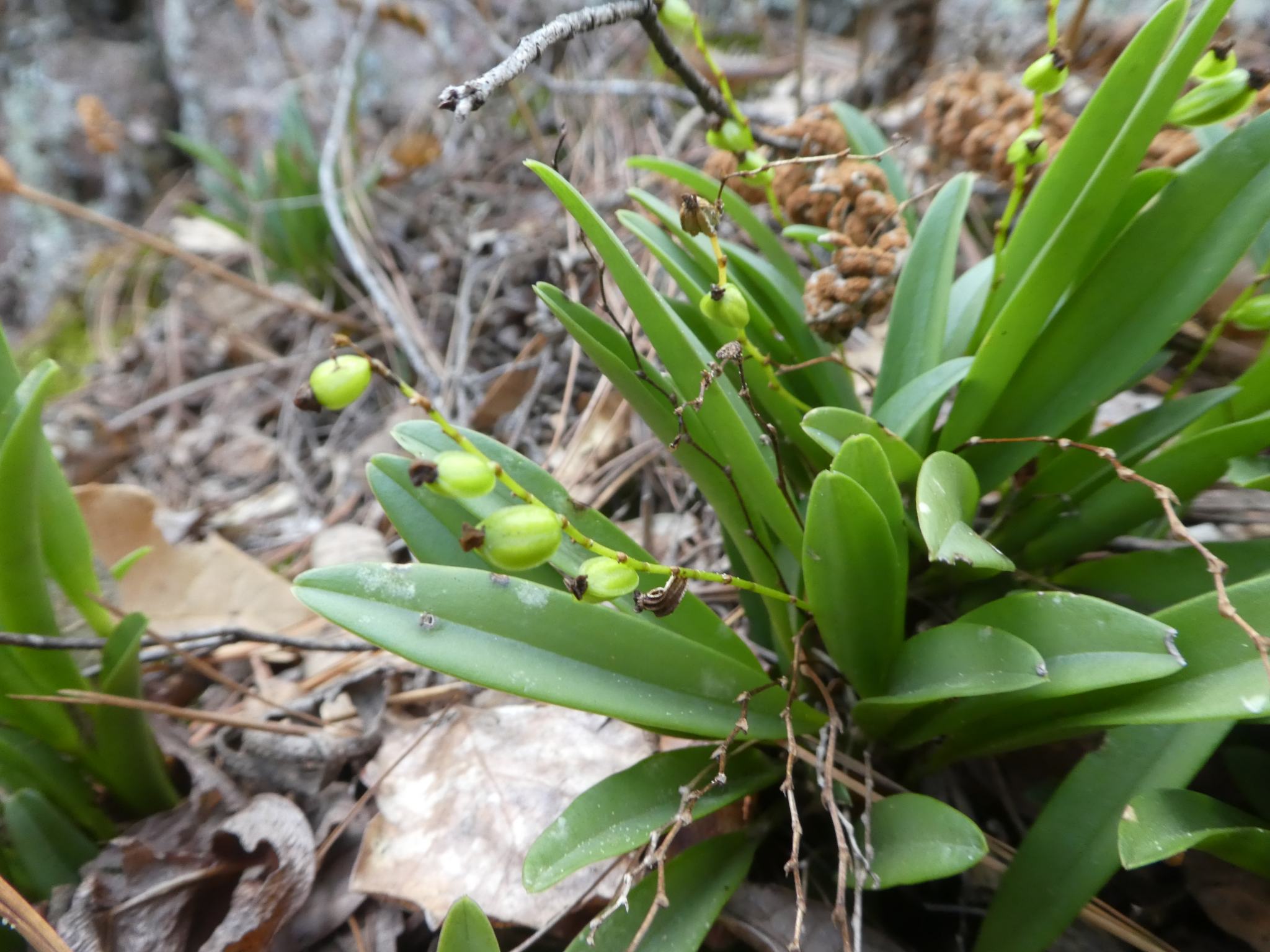 If you suffer from arachnophobia at all, it would be best not put your hand into this hanging cactus.   Lurking within is a colony of spiders which don’t built webs but instead hub together inside the cactus in their thousands. 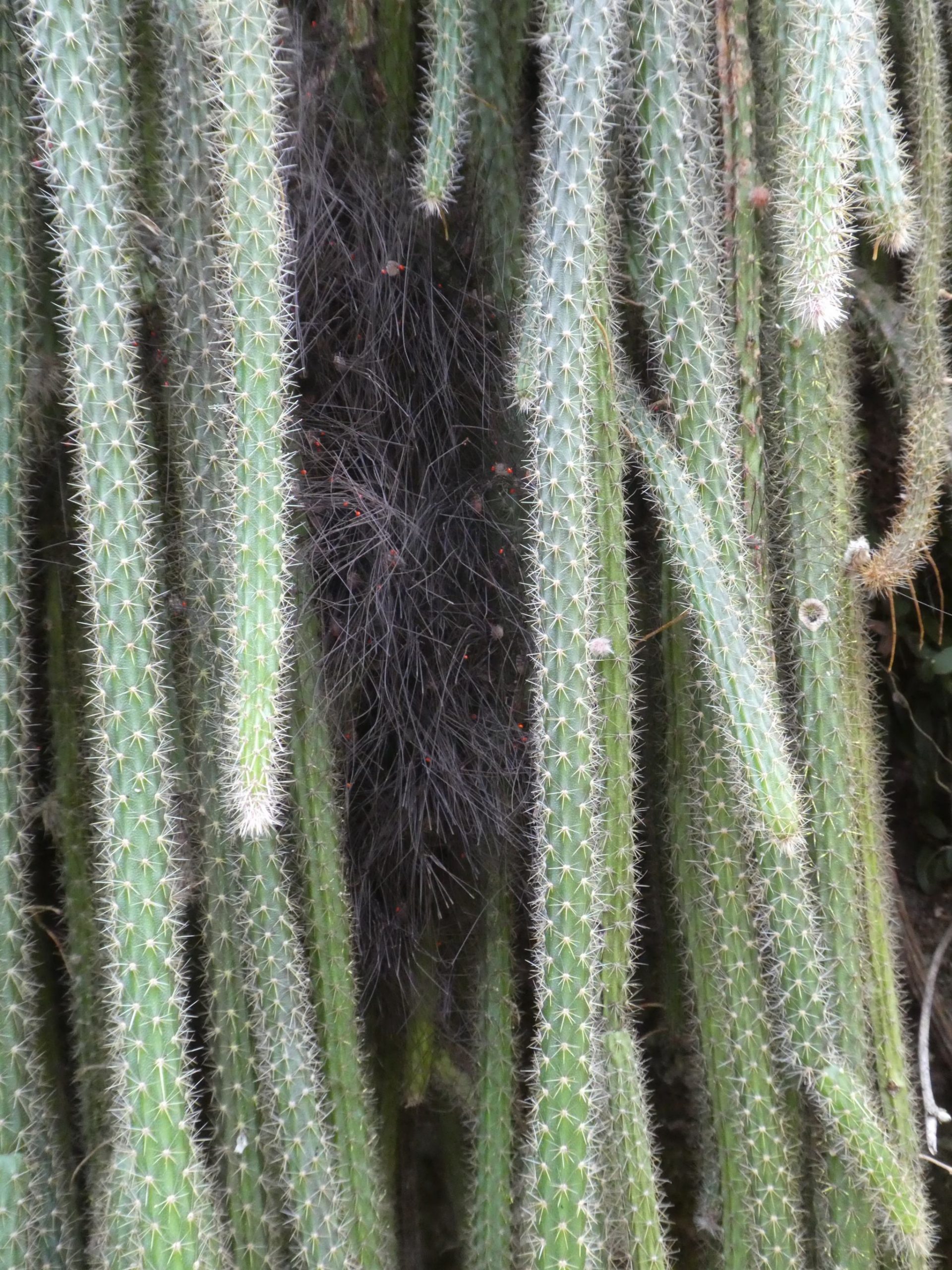 As we ascended on the other side of the canyon, there were peach trees in flower. 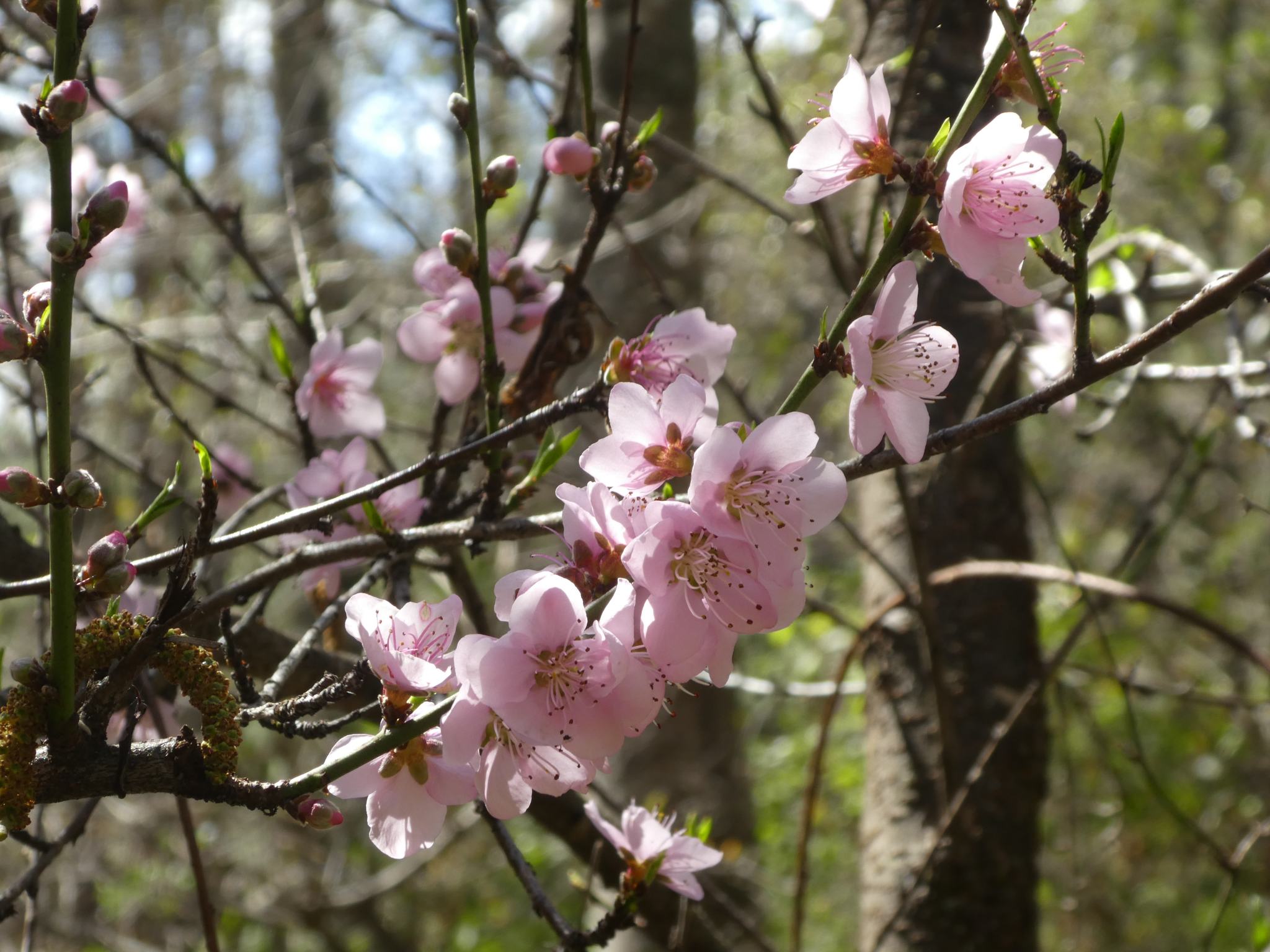 We arrived in Latuvi in the early afternoon as the walk was only 15km, which left time for a temazcal.  For a description of a temazcal, see our earlier post on our hike from Xela to Lake Atitlan – basically it’s a sauna that looks like a pizza oven.

This one was a deluxe version.  Prior to cooking in the sauna, an attendant slapped our exposed body parts with a bunch of leaves soaked in something traditional to ‘expel negative vibes’.   When you are wearing nothing but a cotton sheet wrapped around your torso, that’s quite a lot of slapping.  Or maybe we were judged to have a lot of negative vibes to be expelled.

And afterwards we were massaged all over with a substance which smelt and had the consistency of beef lard.  But we made it back through the village without being followed by the local dogs, so maybe it wasn’t beef lard after all.

Day 4 – Latuvi to Cuajimoloyas: It had looked like it might rain overnight but in the morning the sky was blue and cloudless.  We hiked up a short hill  and the view back to Latuvi was bright and clear. 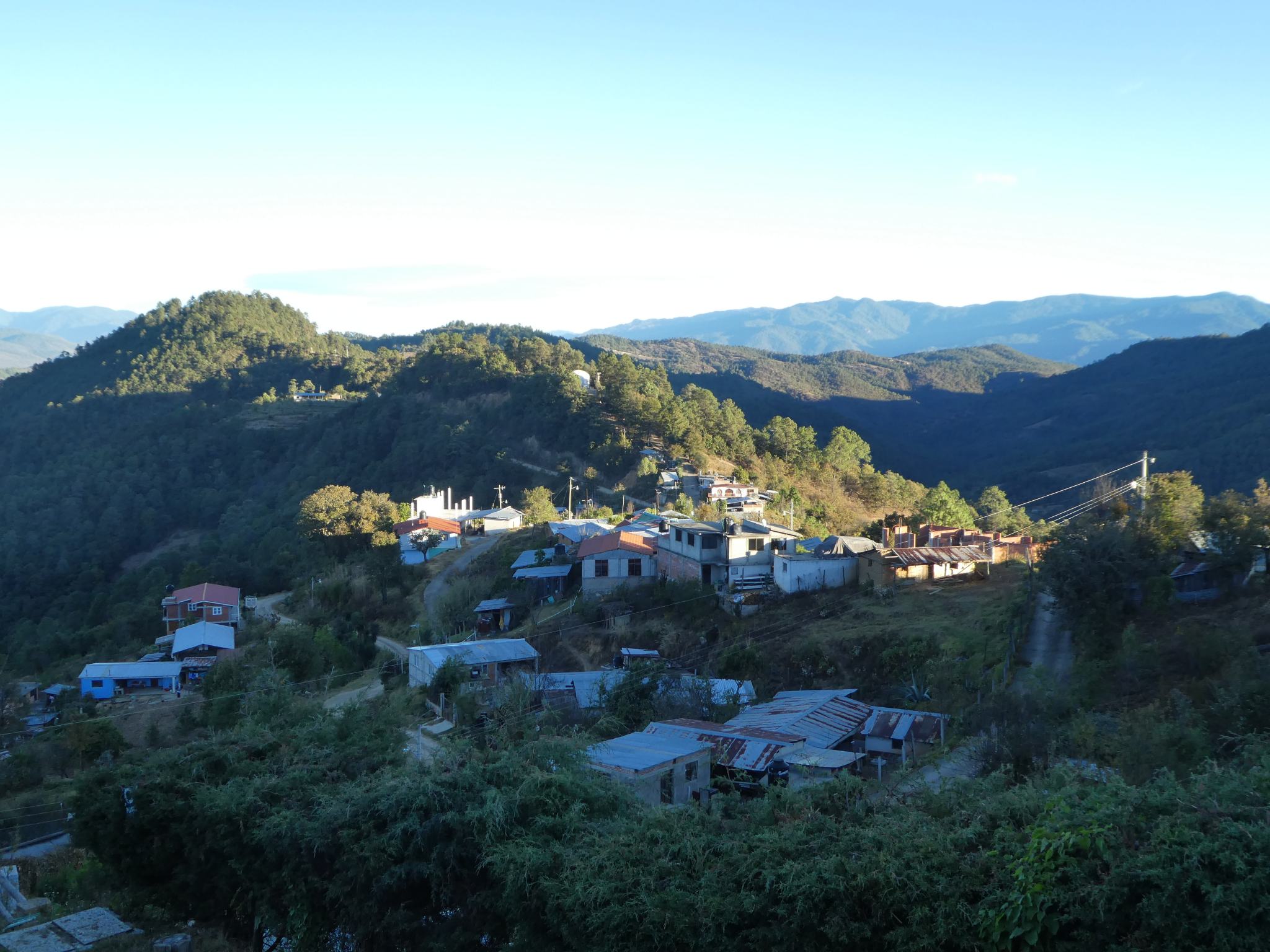 Latuvi is at 2,400 metres elevation and we hiked 16km back to Cuajimoloyas, 3,200 metres.   This had been described to us as a hard ascent but maybe we had acclimatised to the altitude a bit because we didn’t find it that bad.  Basically, we started from where the next photo is taken, headed down to the river flats in the centre of the picture, following them out of frame to the right, then up to Cuajamoloyas which is behind the ridge in the distance. 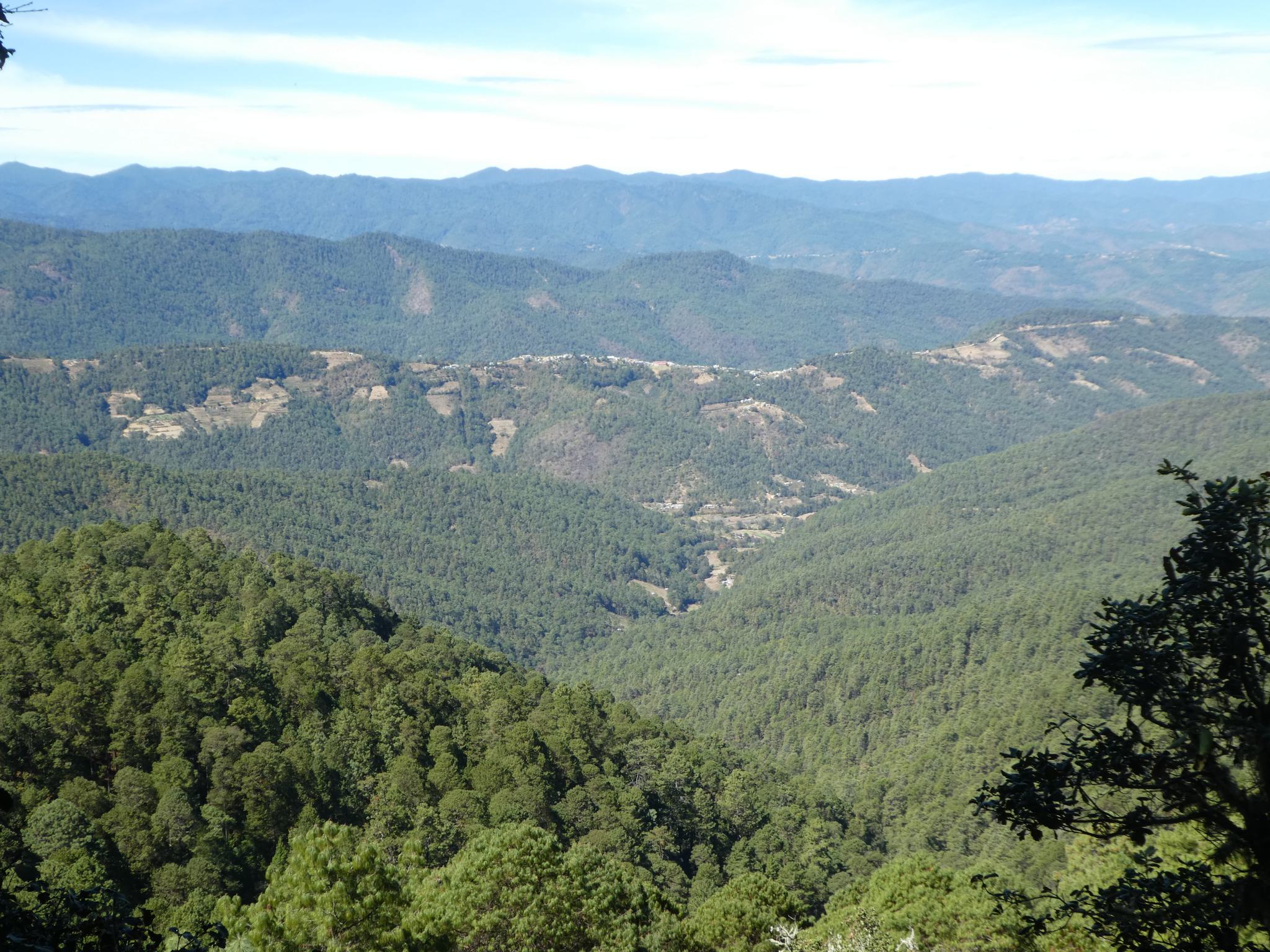 It was a pretty walk with lots of wildflowers. 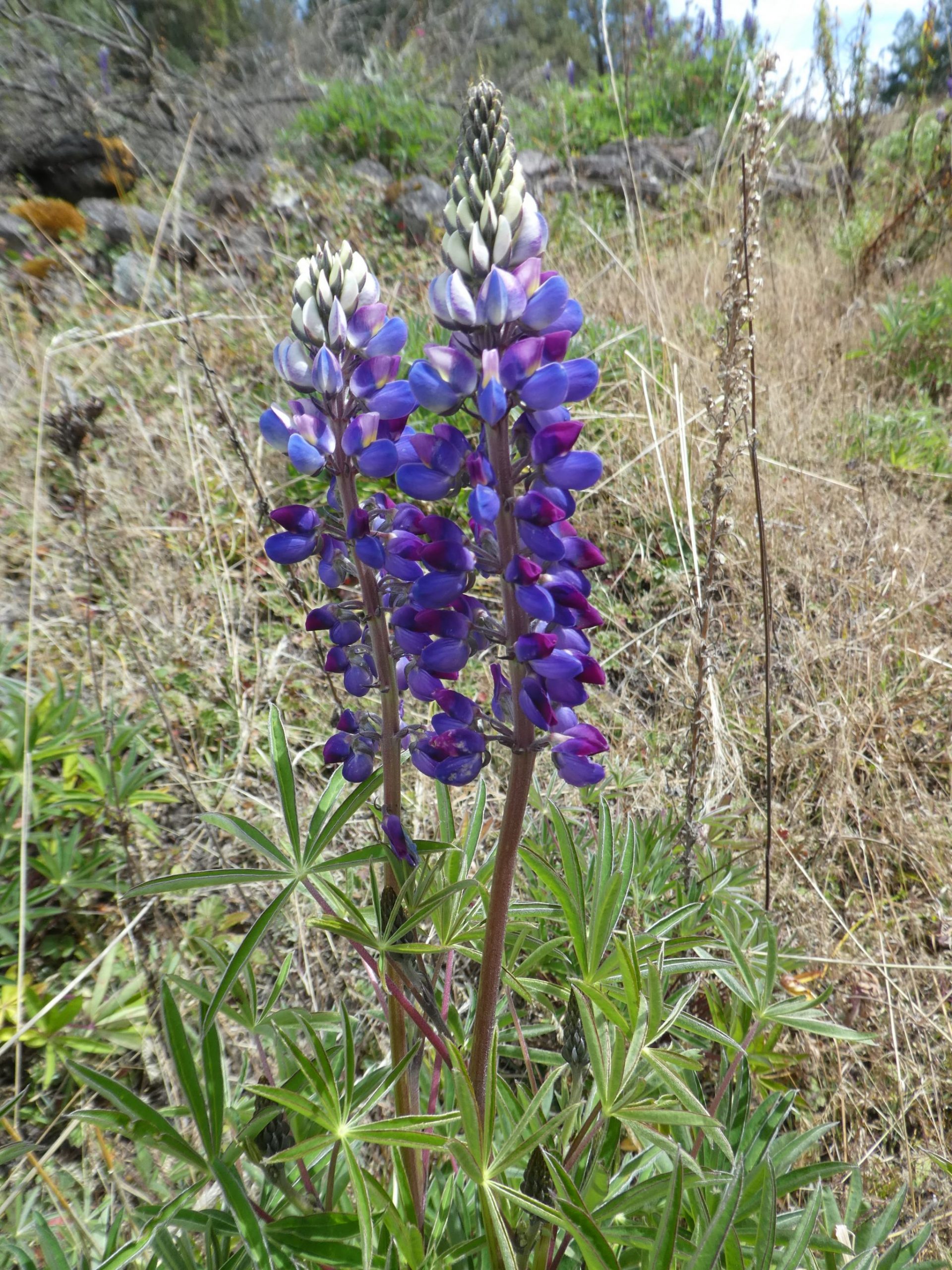 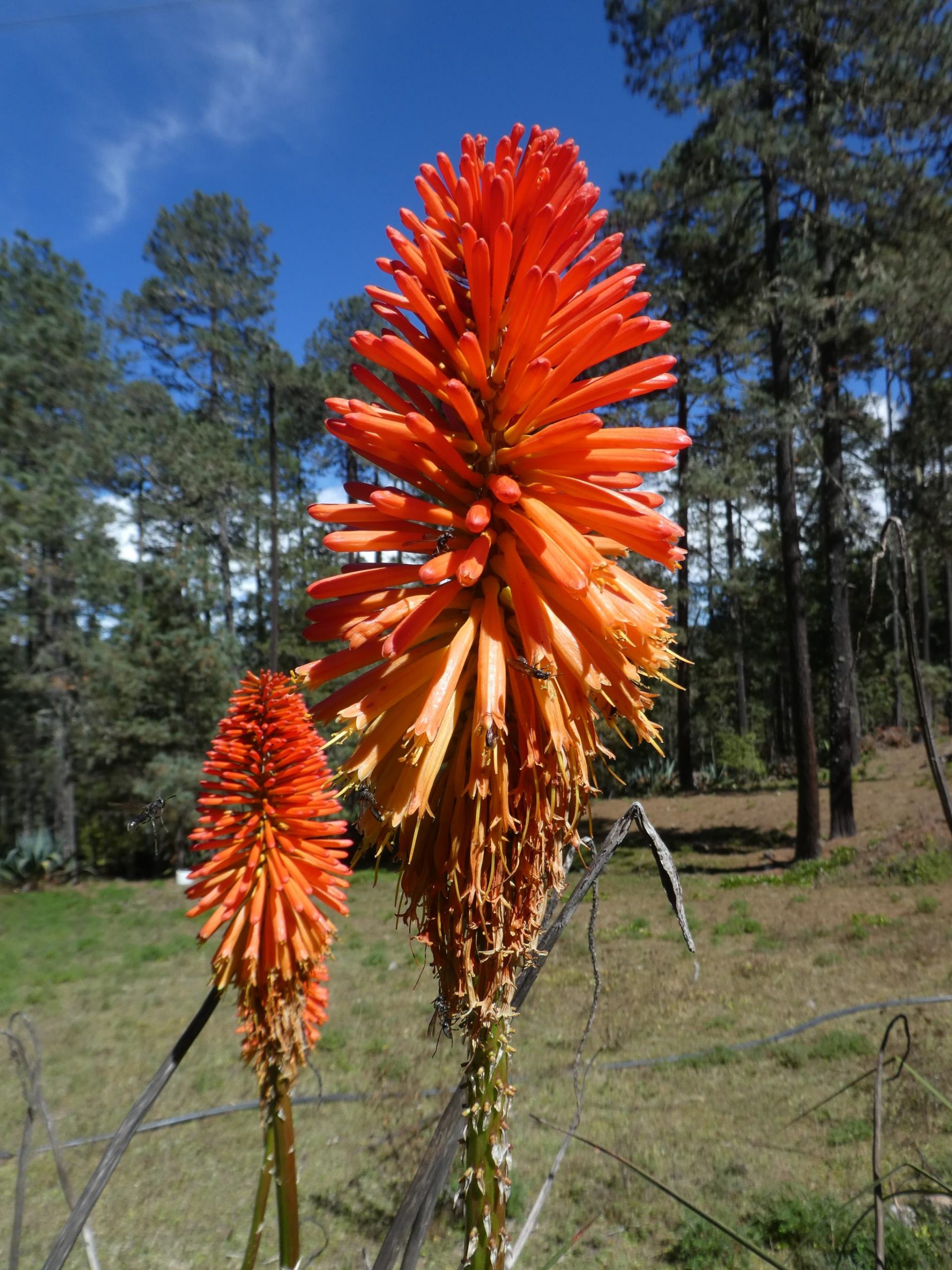 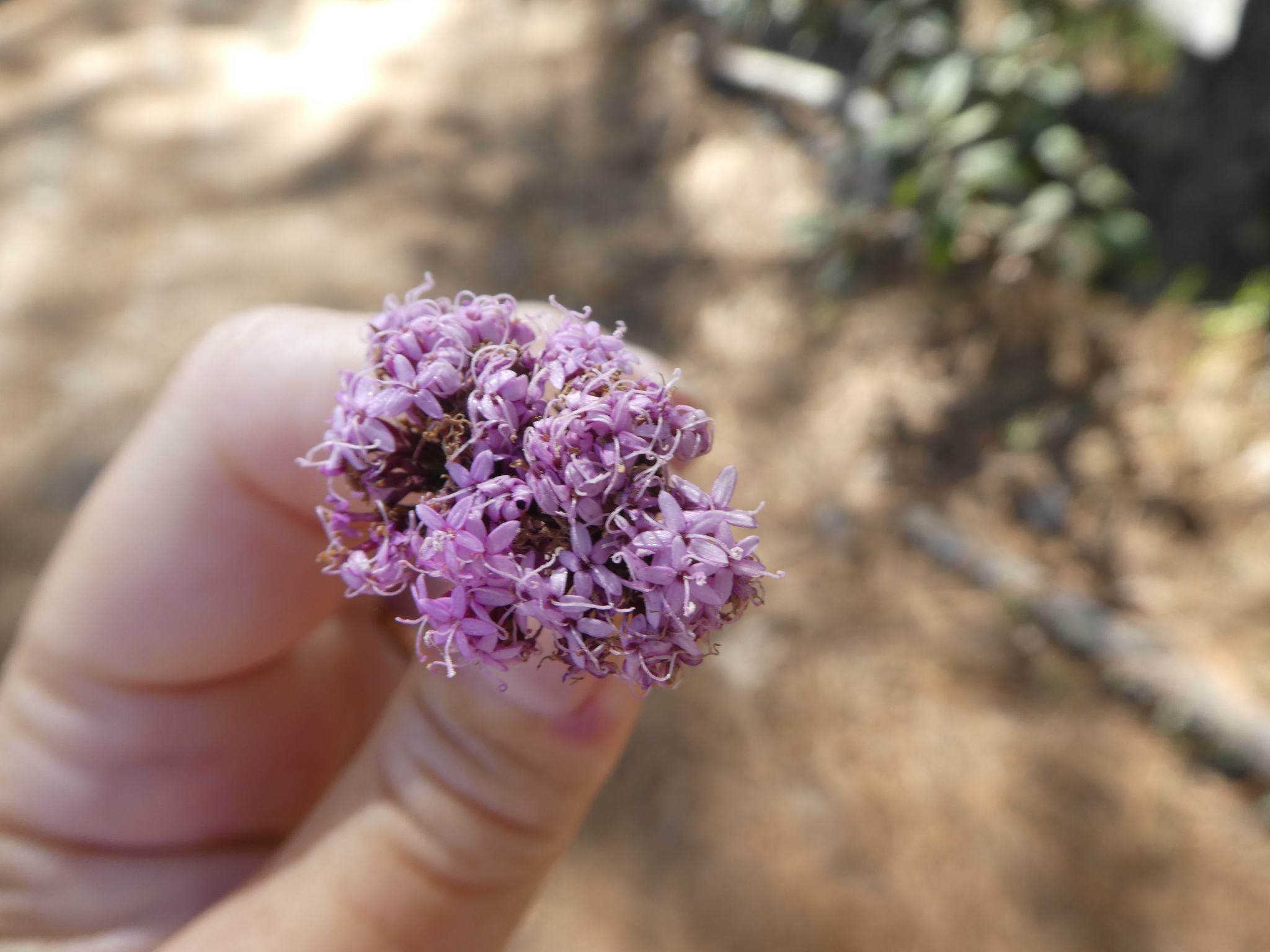 And as we got toward Cuajimoloyas, more agaves. 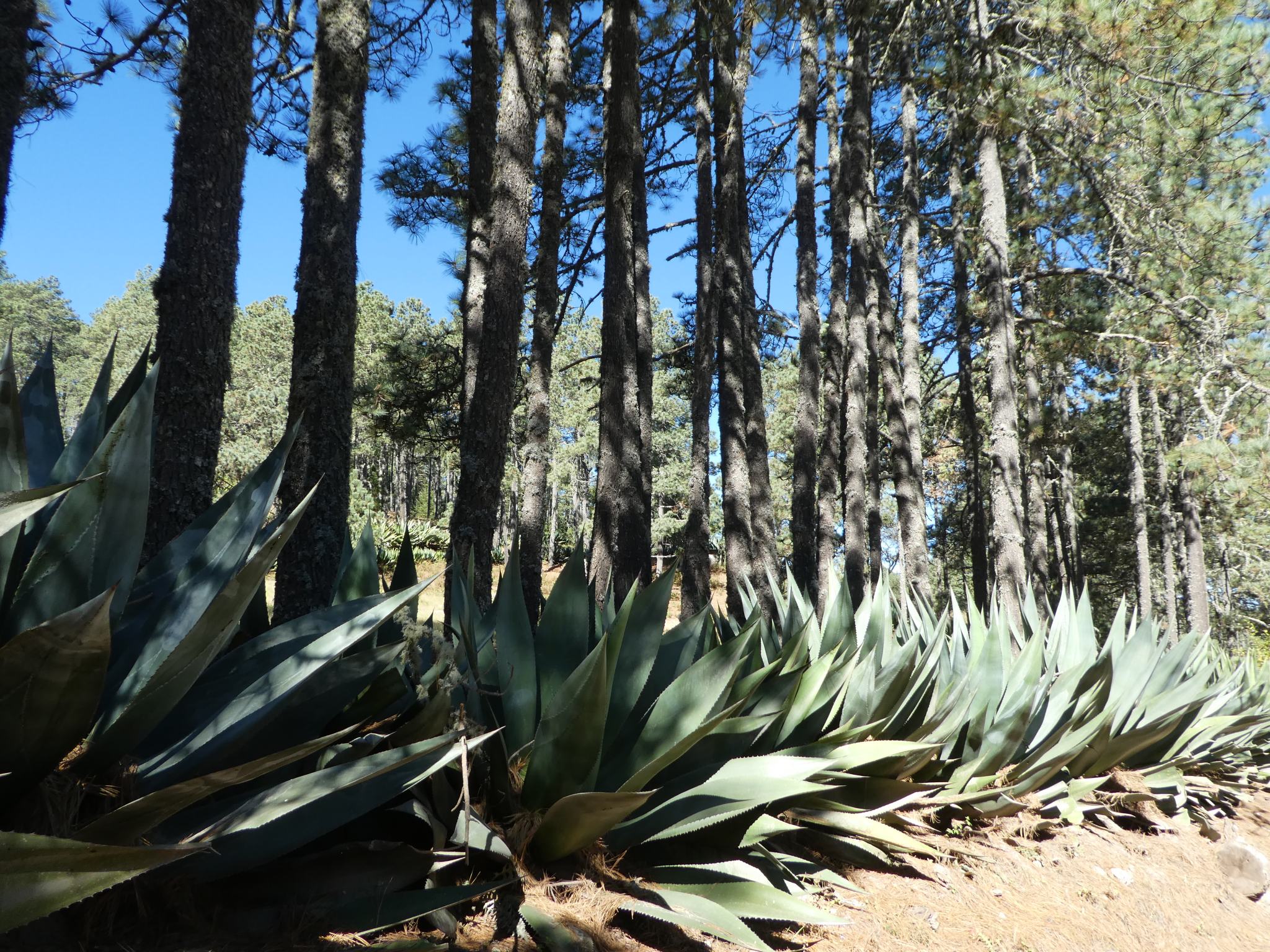 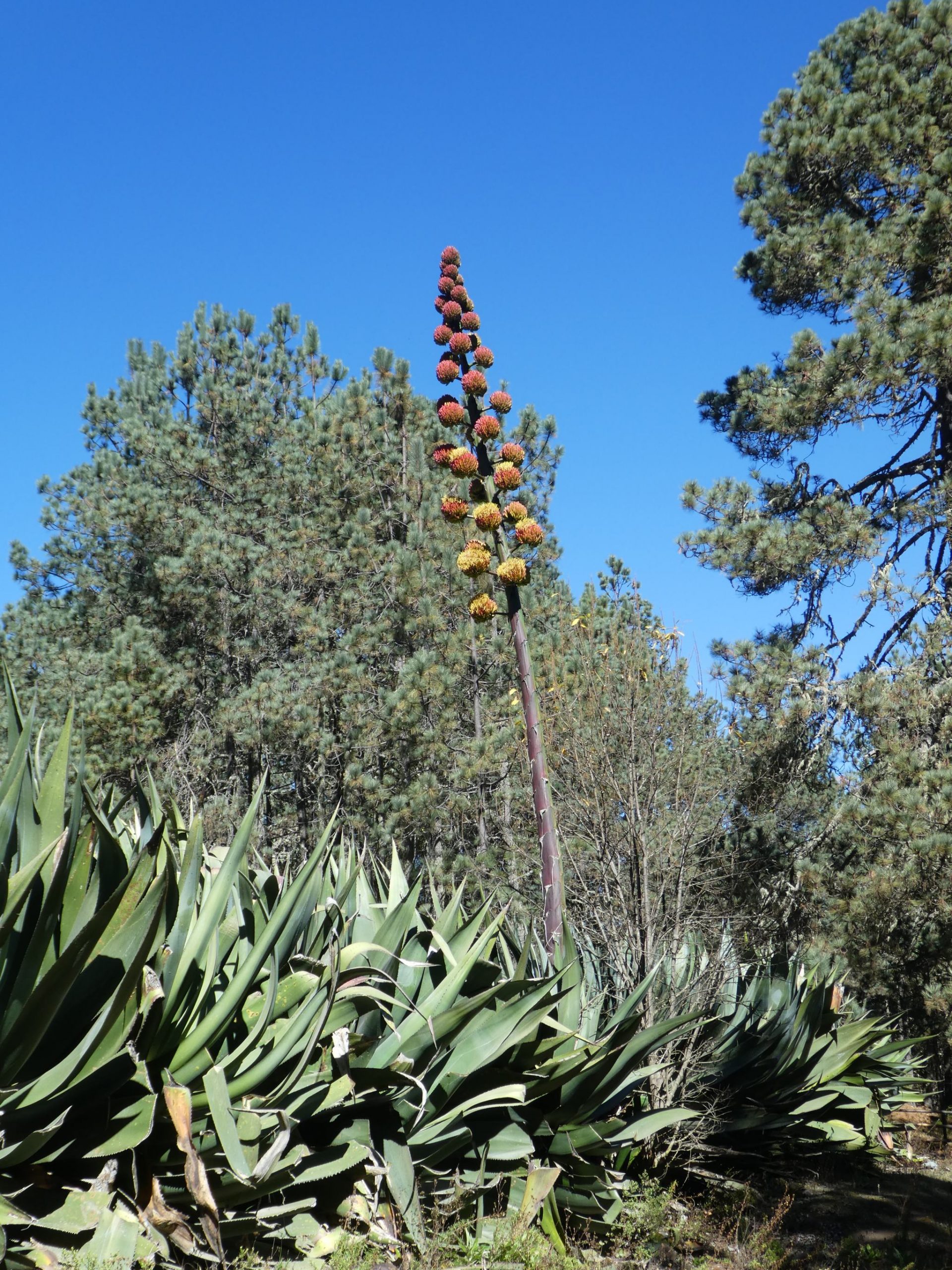 Back in Oaxaca, we unwound with a few more mezcals.  It was a fitting way to end our short sojourn in Mexico. 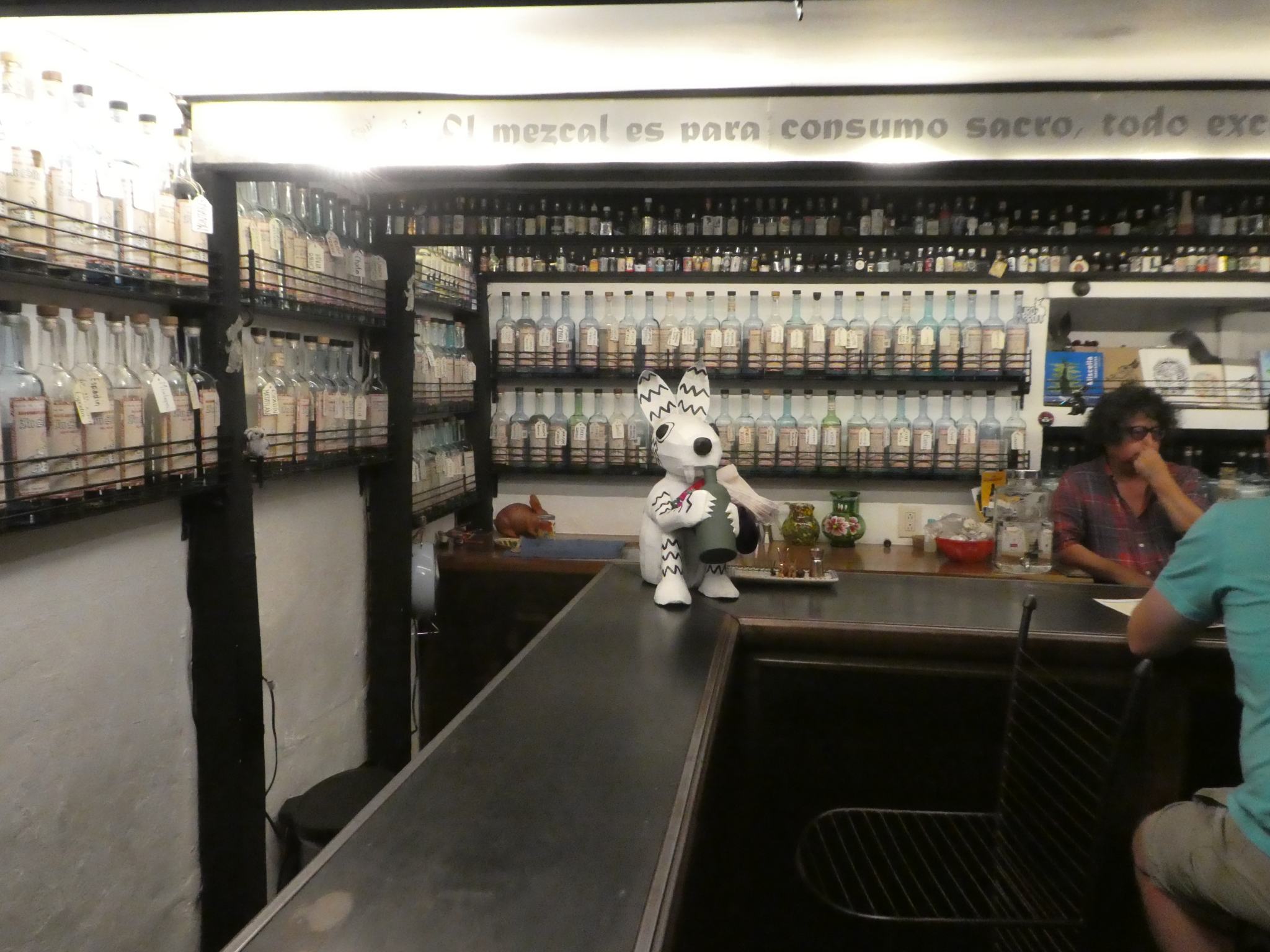