After two years and one week roaming the planet, we arrived back in Australia in February 2020.  We had:

We came back to Australia to sit on our deck, stare at the ocean, sip a martini and process all that we’d seen. 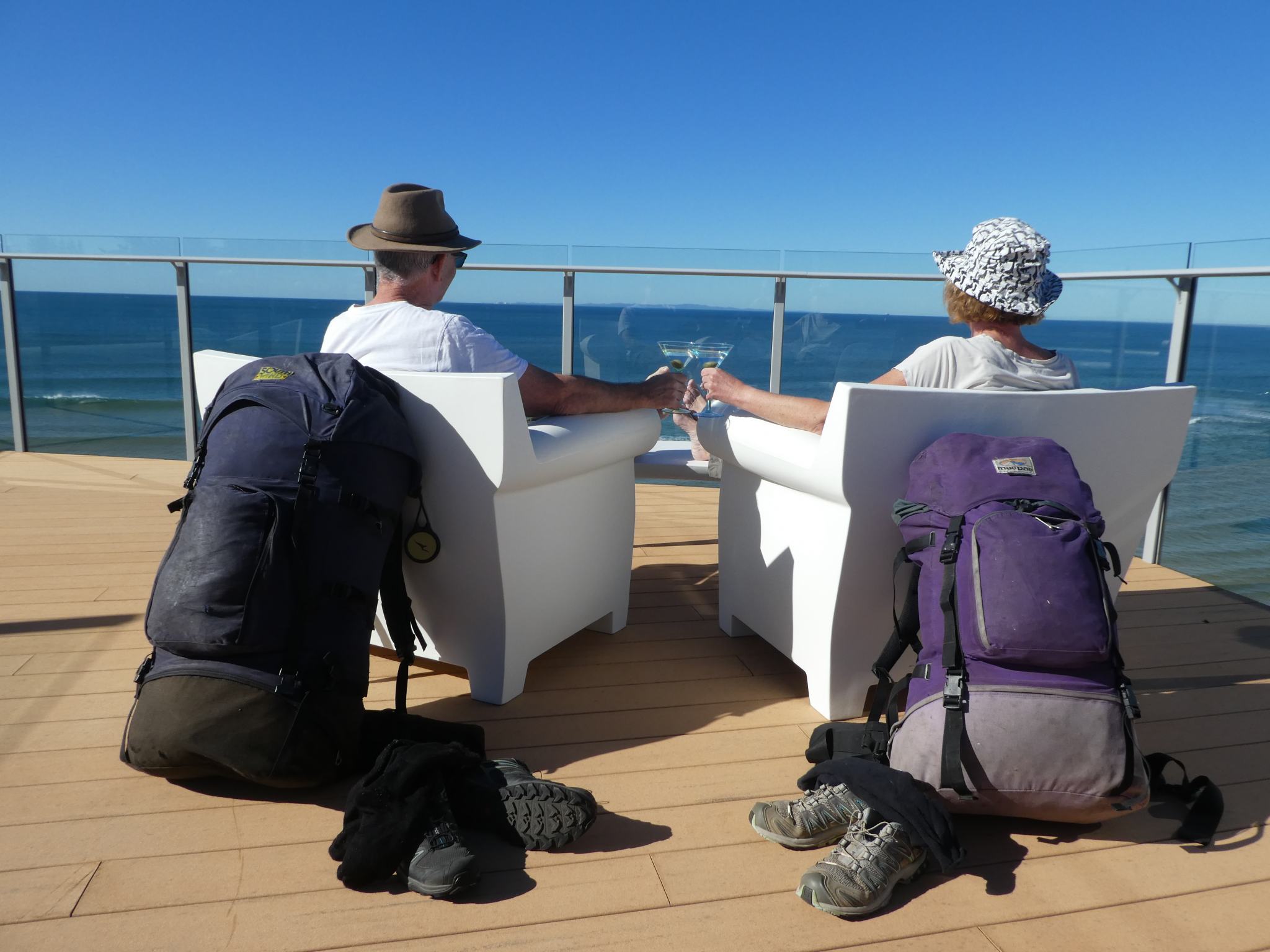 We had planned to head off again in June 2020 but COVID-19 had other ideas.  We were lucky to have come home just before the pandemic exploded, and as it dragged on we felt increasingly grateful to have been able to freely travel for as long as did.

But after a year this COVID-imposed down-time was wearing thin.  We were itching to get on the road again and with Australians still effectively barred from overseas travel, it was time to see some more of our own great country.

Tasmania was as ‘overseas’ as we were going to get for a while, but what a wonderful place to start.

From Launceston we were driven a couple of hours northeast to a drive-in camp at the northern end of the Mount William Conservation Area.  It was a beautiful day and the water was sparkling. 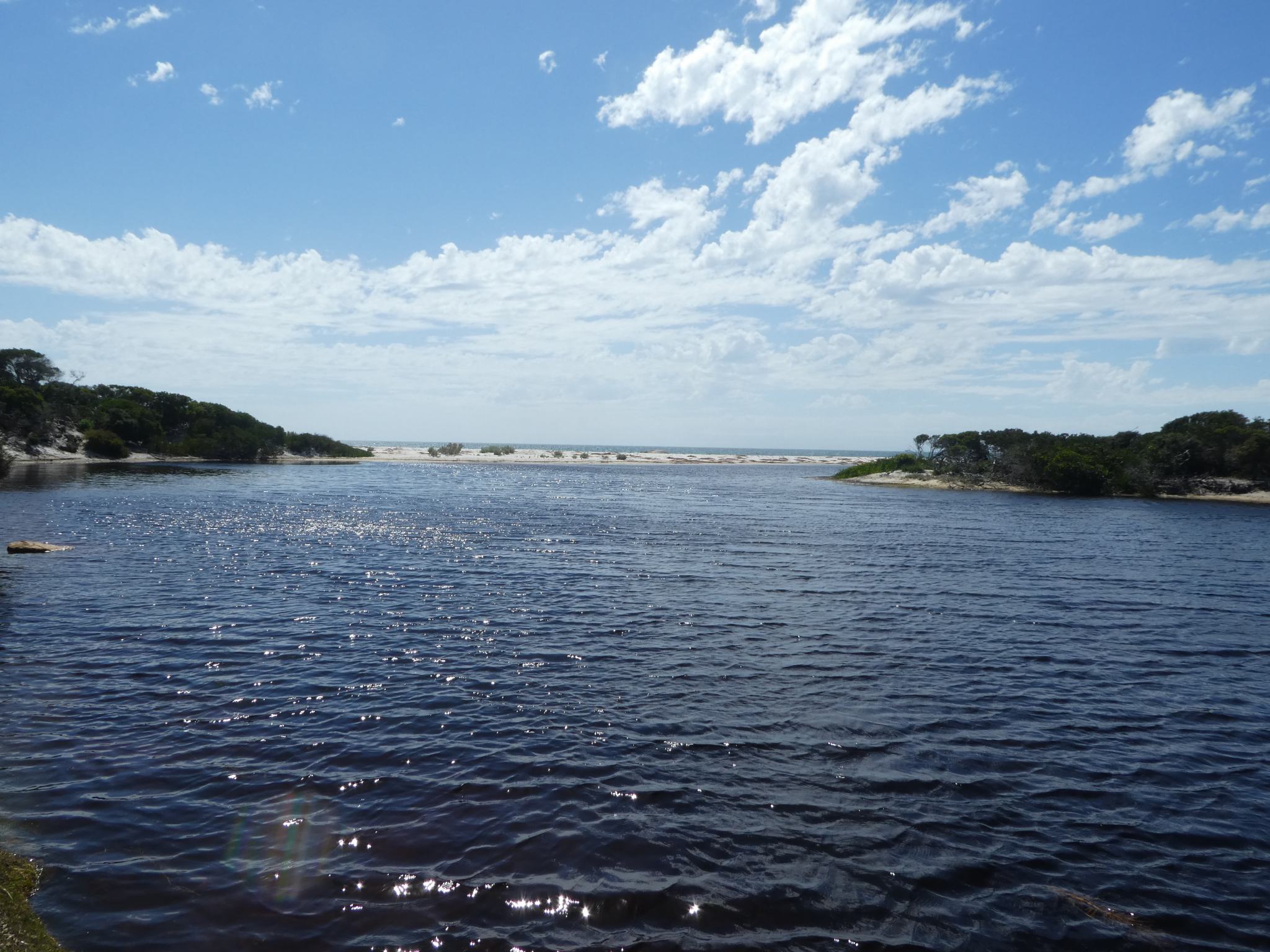 We walked along the coast heading south, a wonderful mixture of pure white sand beaches and outcrops of ochre coloured rocks. 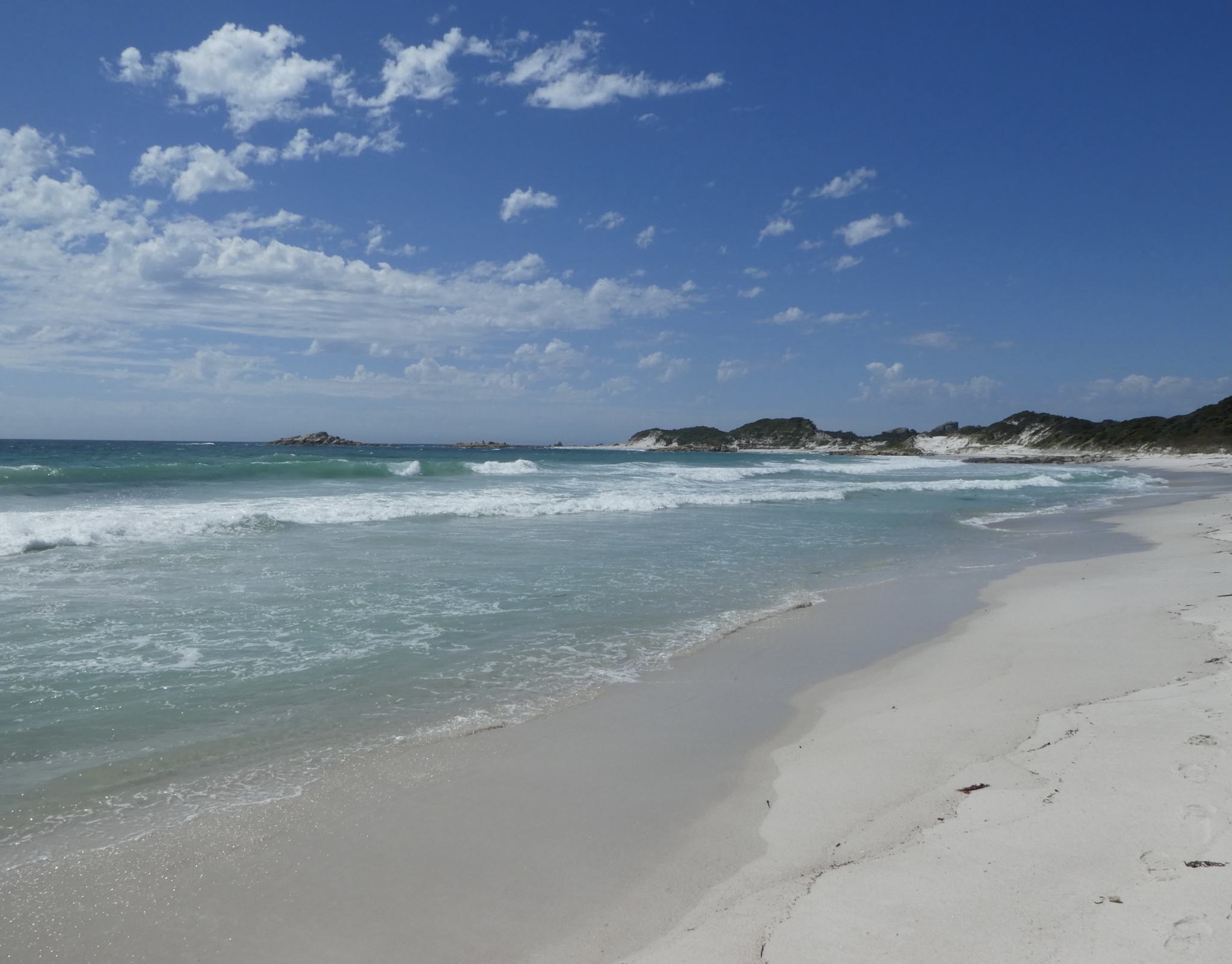 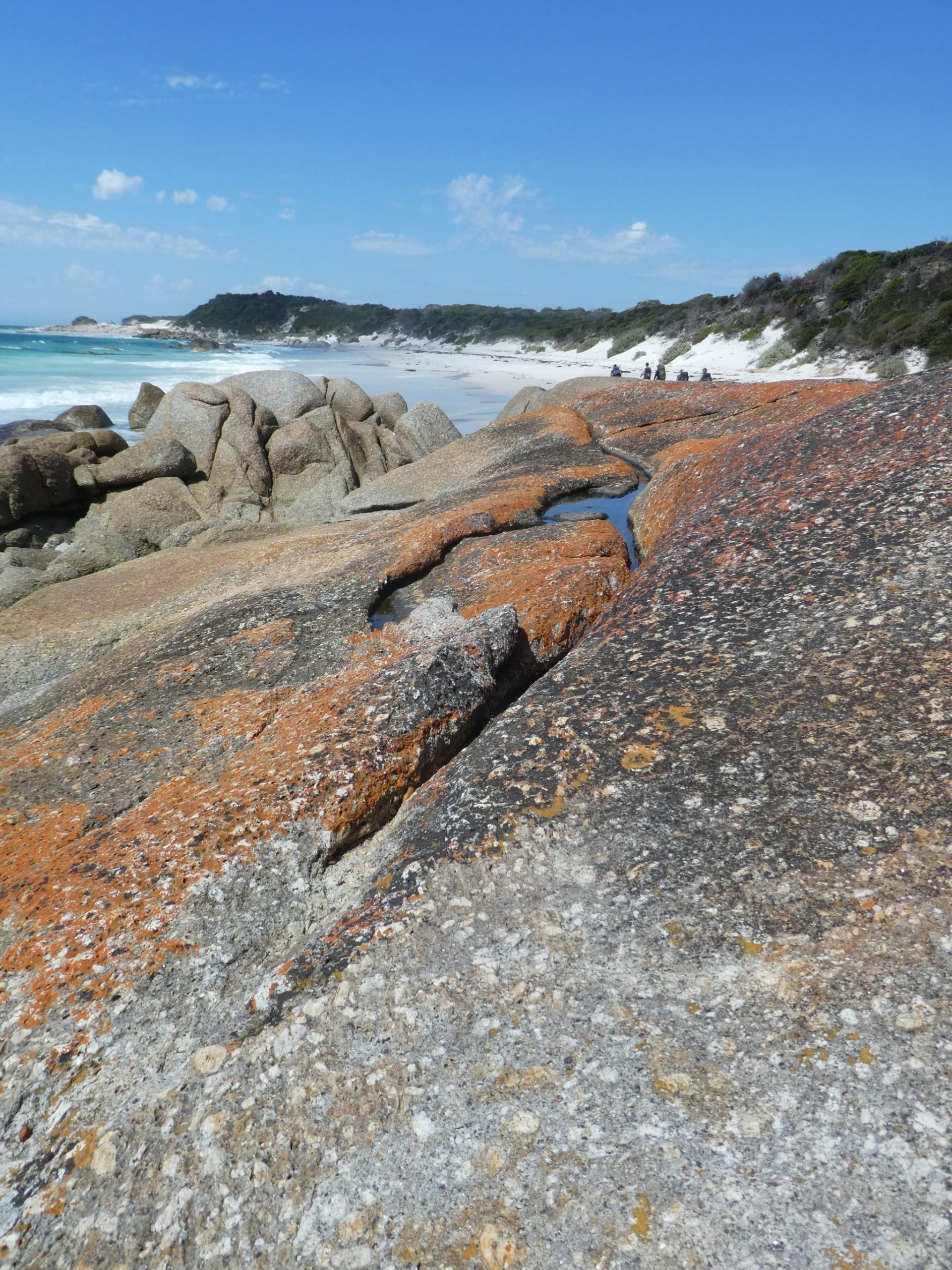 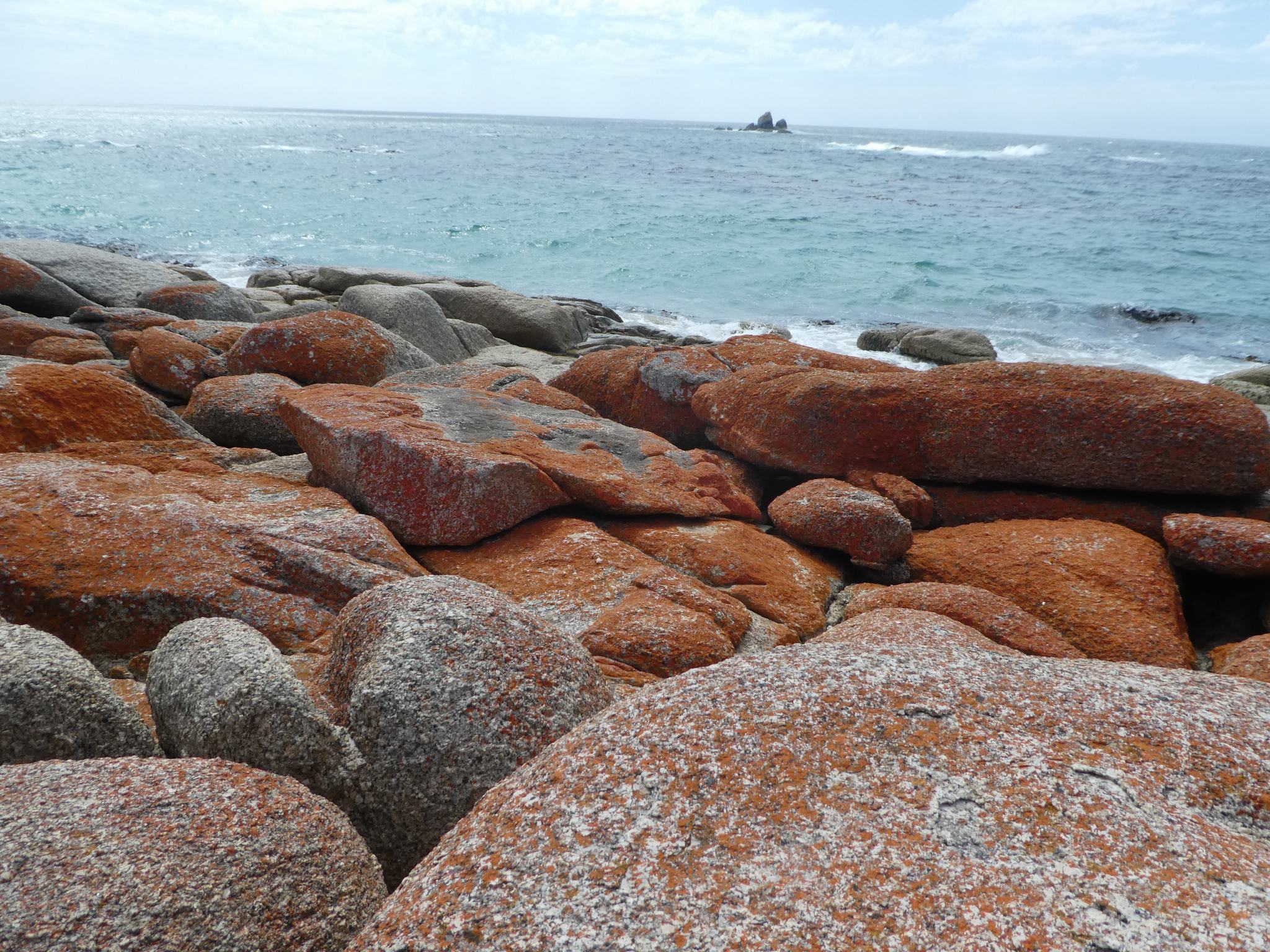 The rocks are granite and the red colouring comes from a lichen.  Many people assume the name ‘Bay of Fires’ references these reddish rocks, but actually Captain Tobias Furneaux, a British navigator sailed along this coast in 1773 and named the bay for the many fires of Aboriginal people which he saw along the beaches.

After several smaller bays and a delightful picnic lunch on the beach, we walked the length of Cod Bay which, at 4kms is the longest in the area. 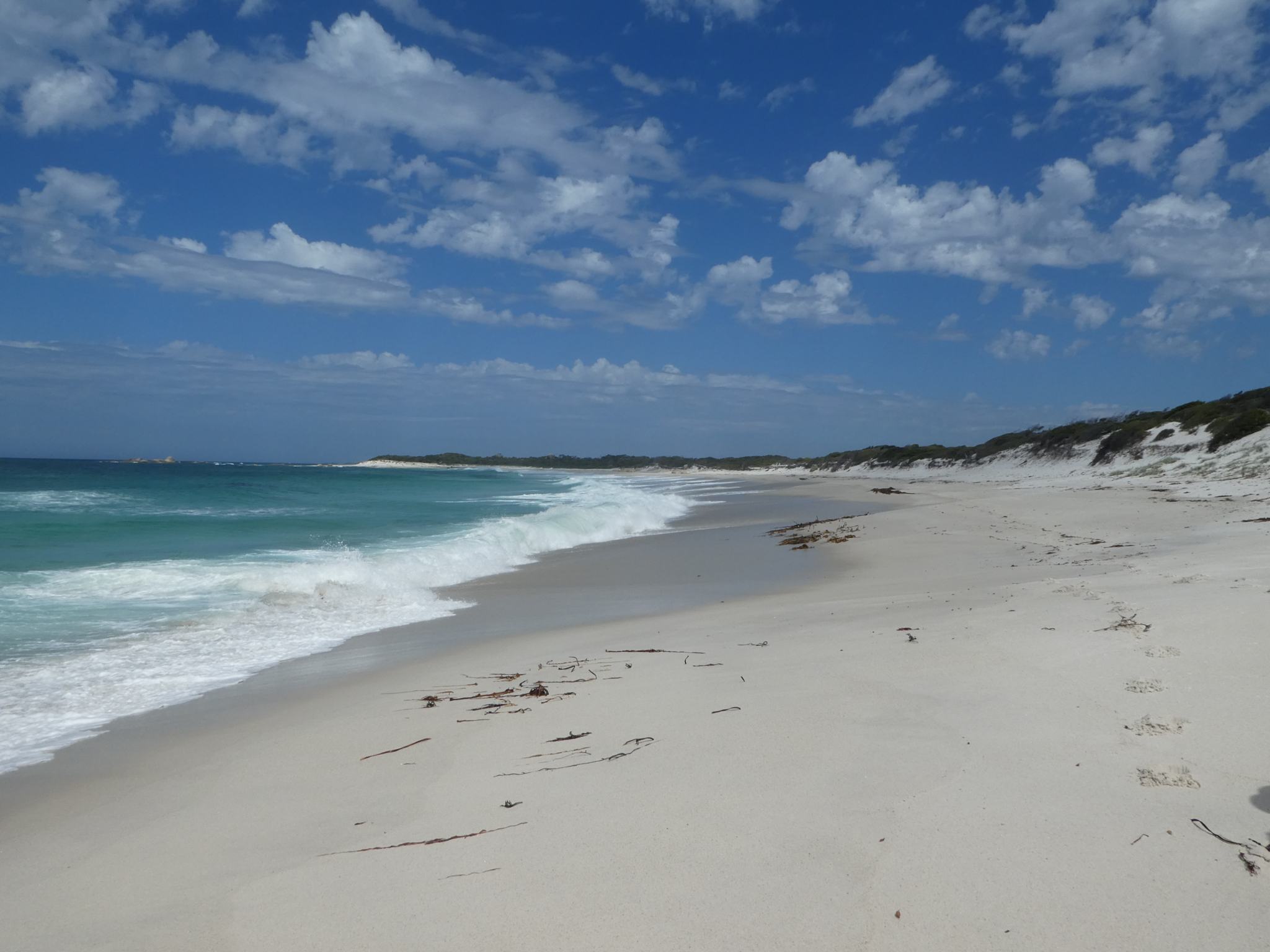 At the end of the bay, we cut inland through coastal heath, then back along the sandy beach, arriving at a cleverly secluded, low impact ‘camp’ just off in the dunes.  A perfect spot for the night. 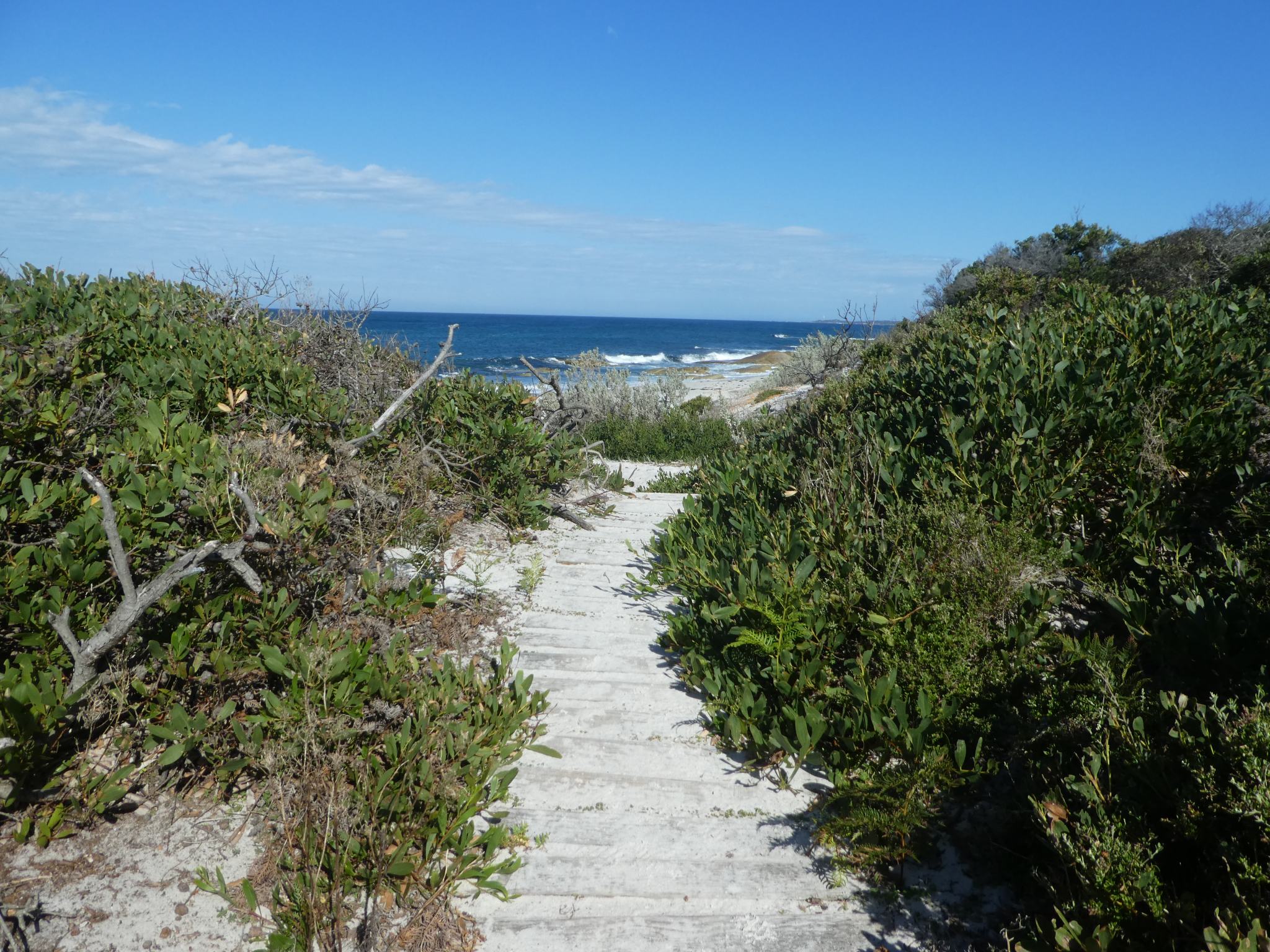 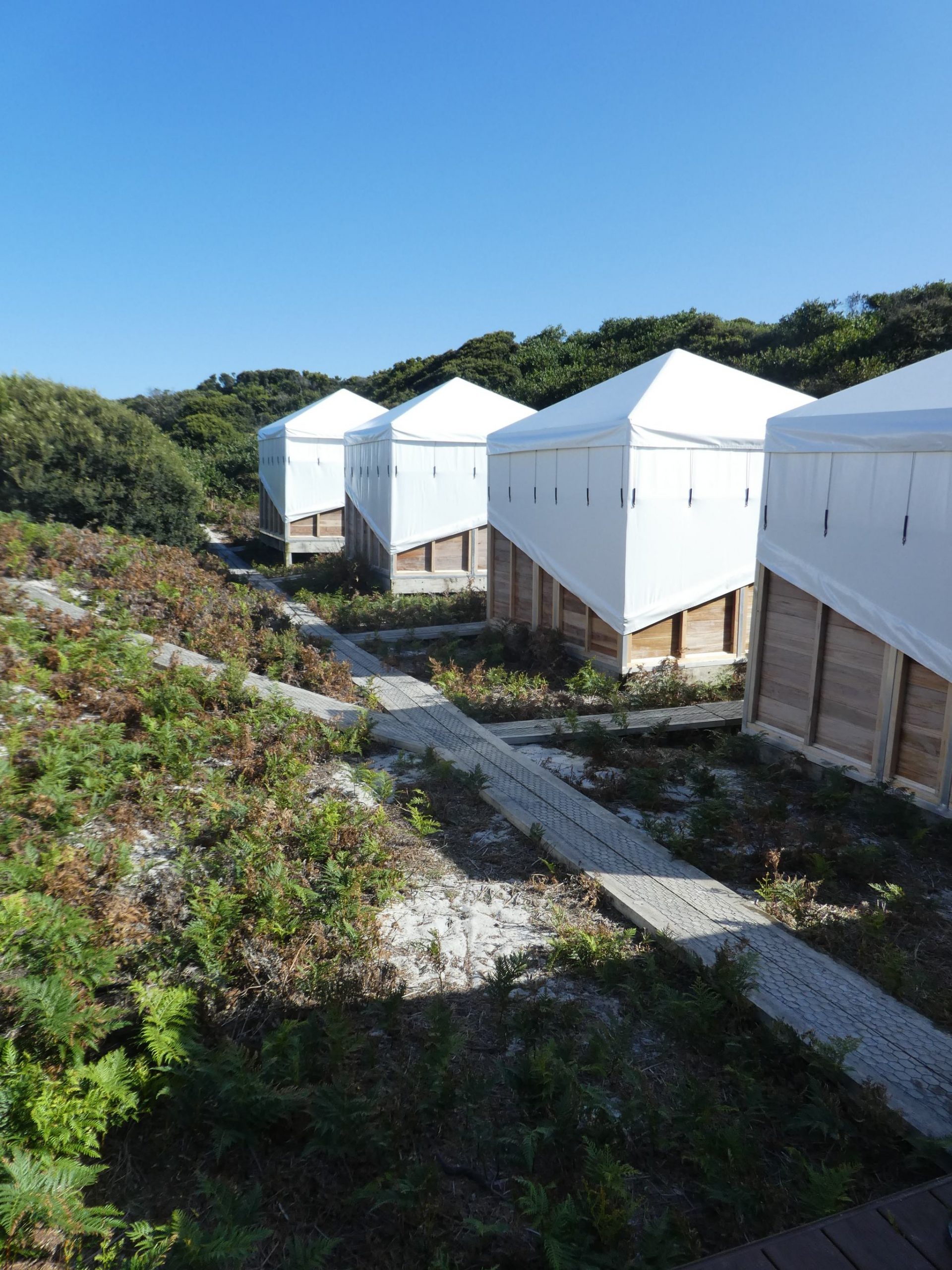 Continuing south, we headed slightly up into more coastal heath with lovely views over the coast. 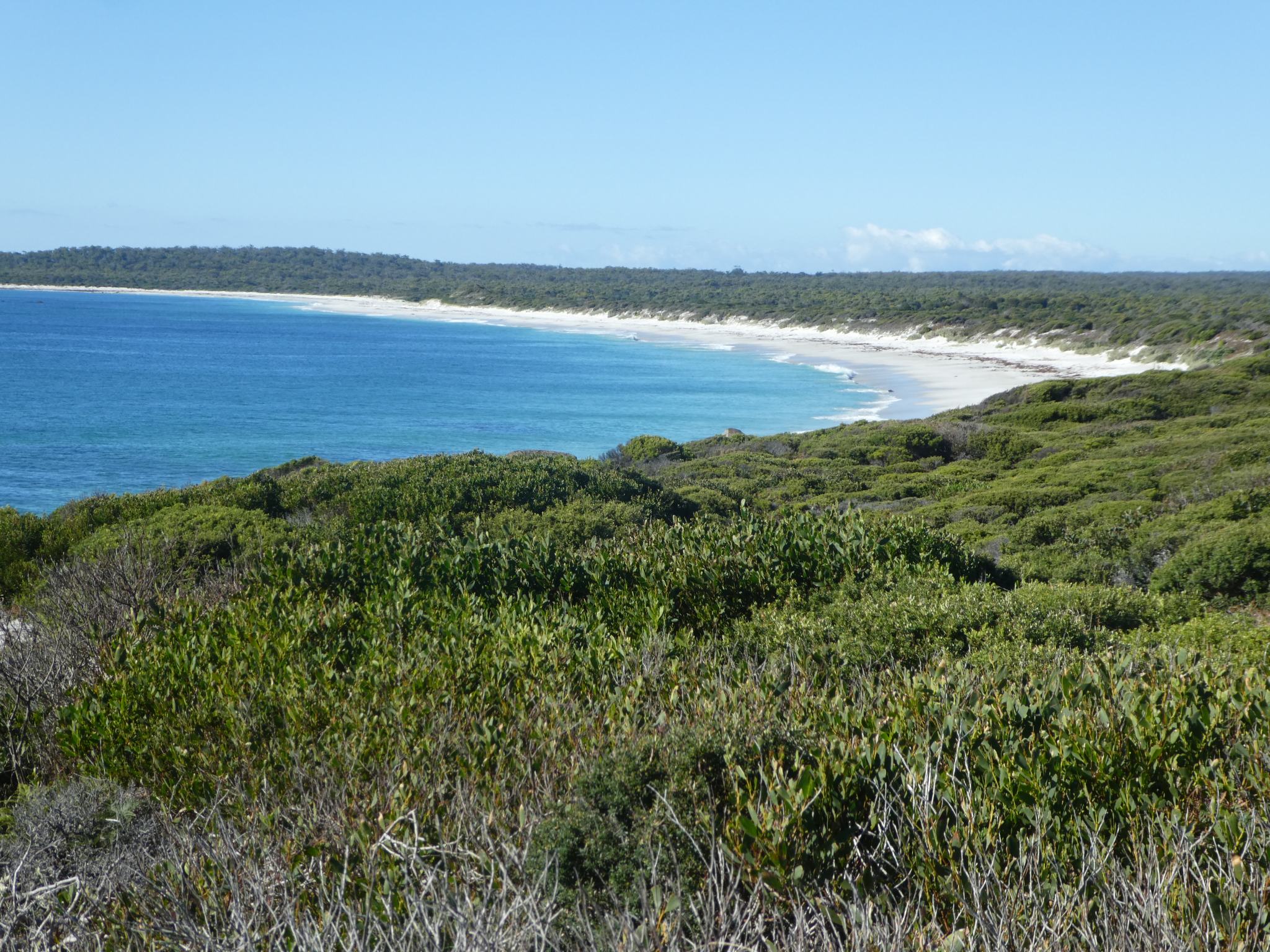 Inland we saw some ‘marsupial lawns’.  These are areas of land where the moisture in the soil is higher than that in the surrounding vegetation, creating lawns which attract grazing marsupials such as wallabies and kangaroos. 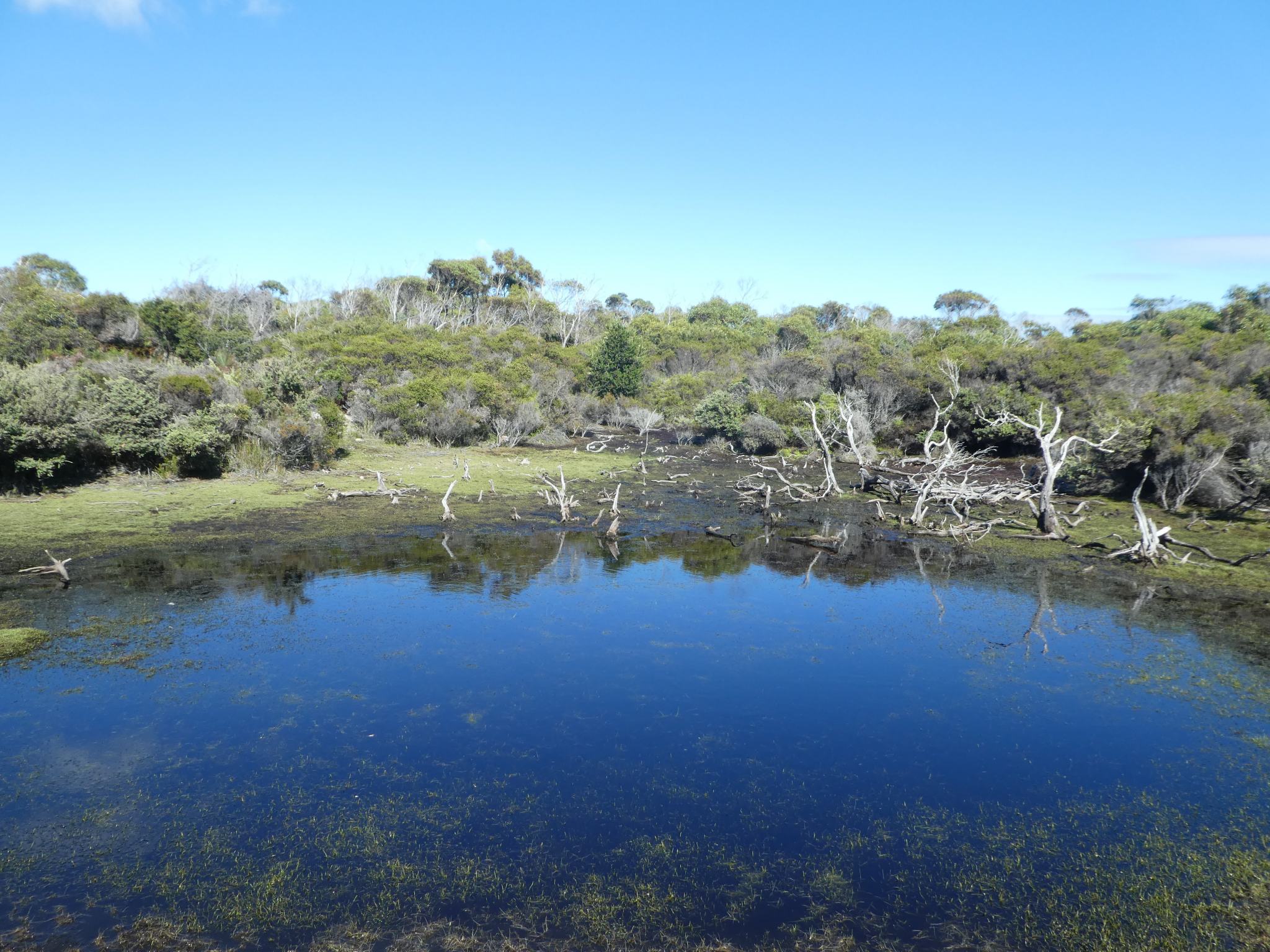 After crossing Deep Creek (ankle deep!), we were back on the beaches and more of those spectacular rocks. 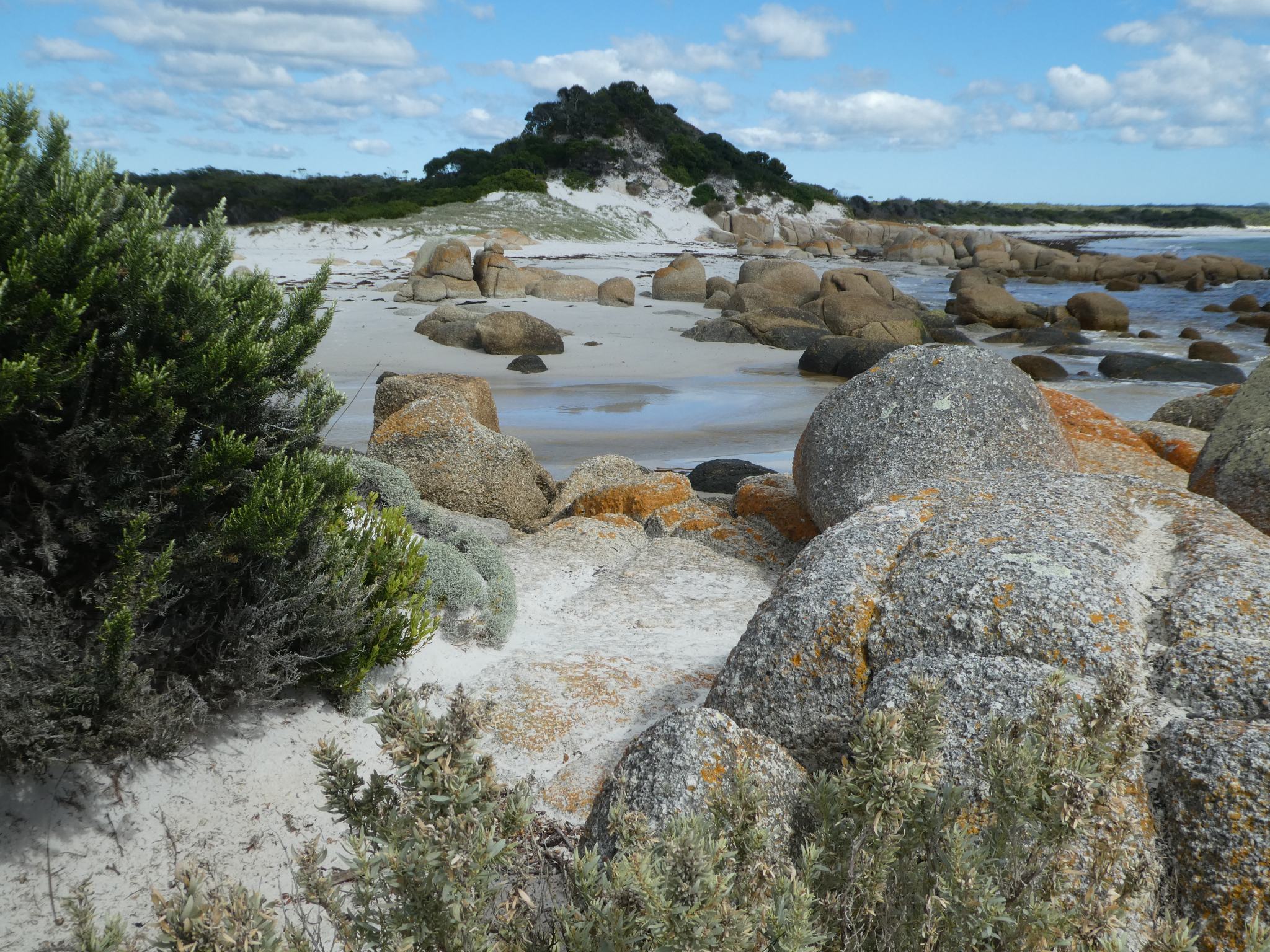 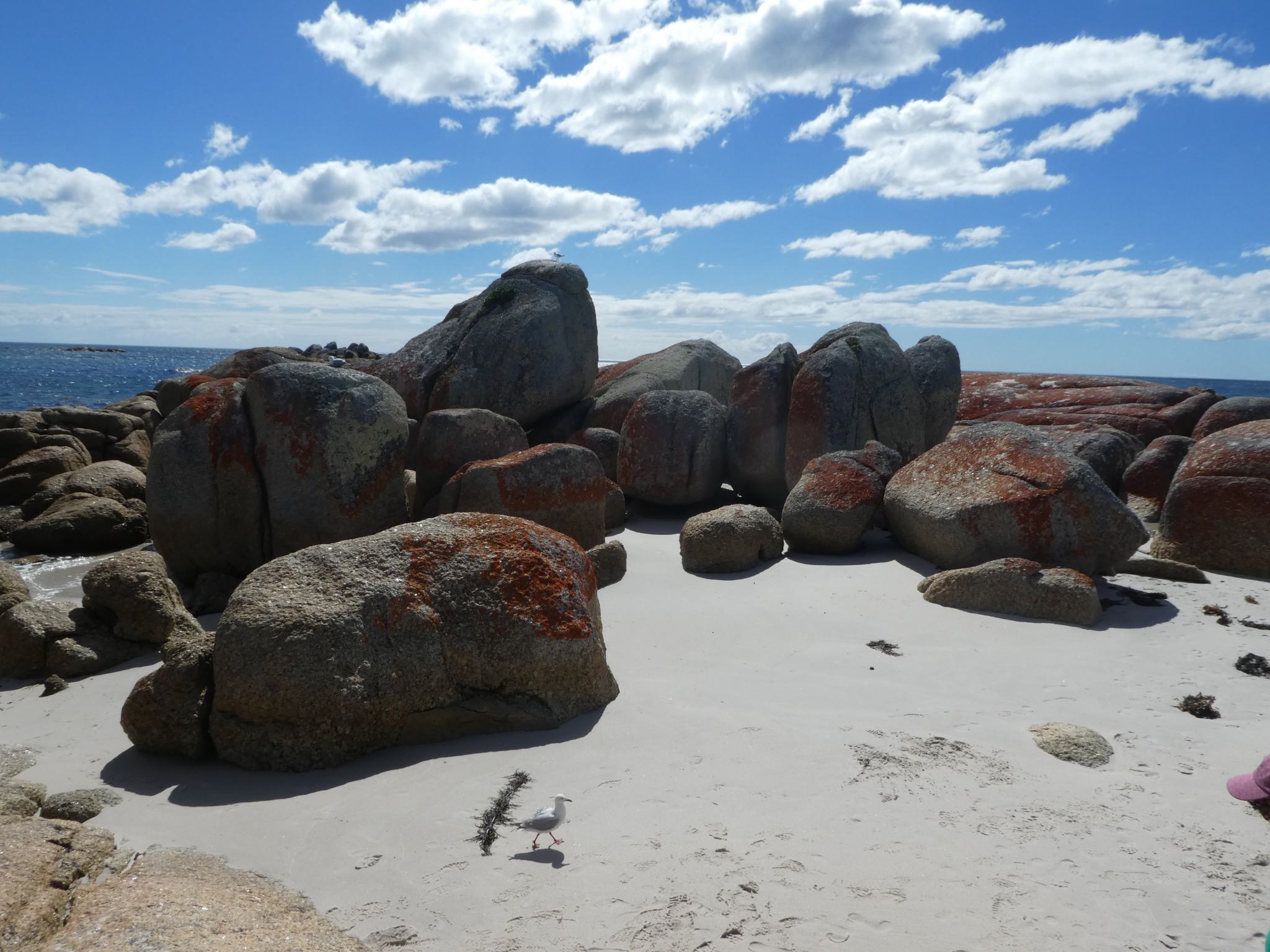 We reached Eddystone Point in time for a lunch break.  This marks roughly the start of the Bay of Fires Conservation Area and was a great spot for a picnic lunch at the gulch just below Eddystone Lighthouse. 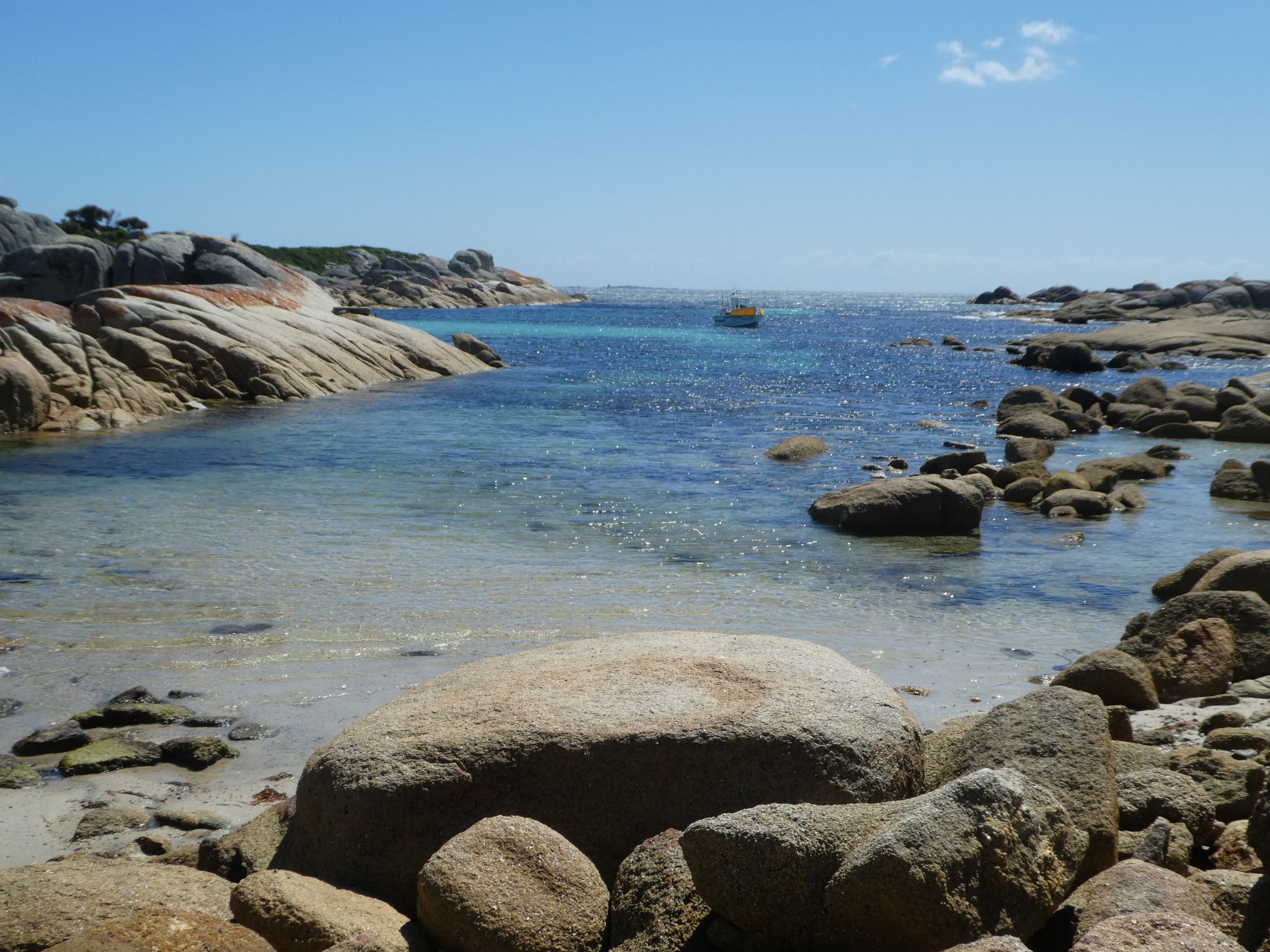 The lighthouse was completed in 1889. Built from distinctive pink granite, it stands 35 metres tall.  We were informed this is the equivalent of 21 grey kangaroos standing upright on each others’ shoulders! 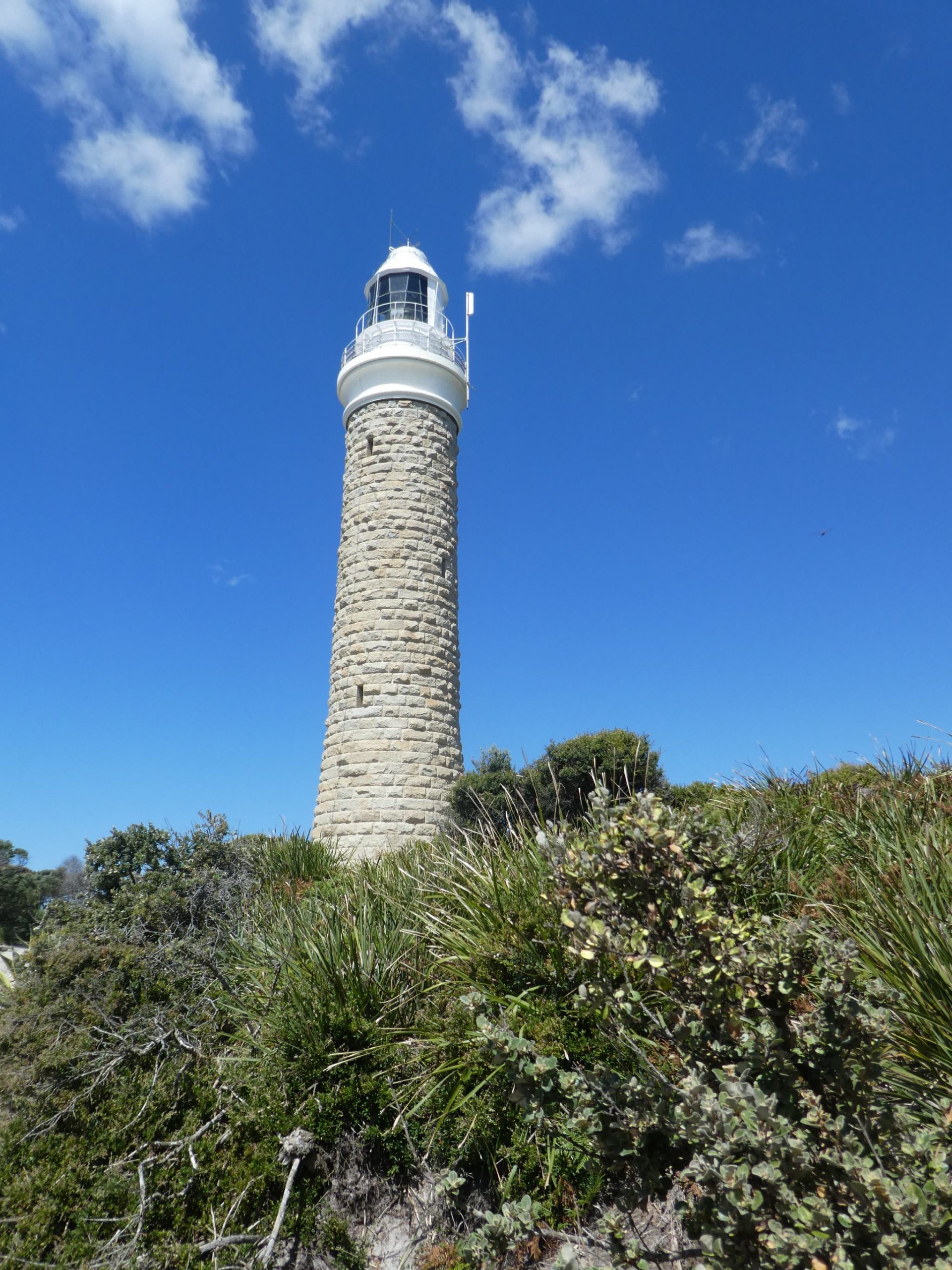 After heading up to the lighthouse (closed to the public) for a look, we continued along the coast amid more of those rocks and coves. 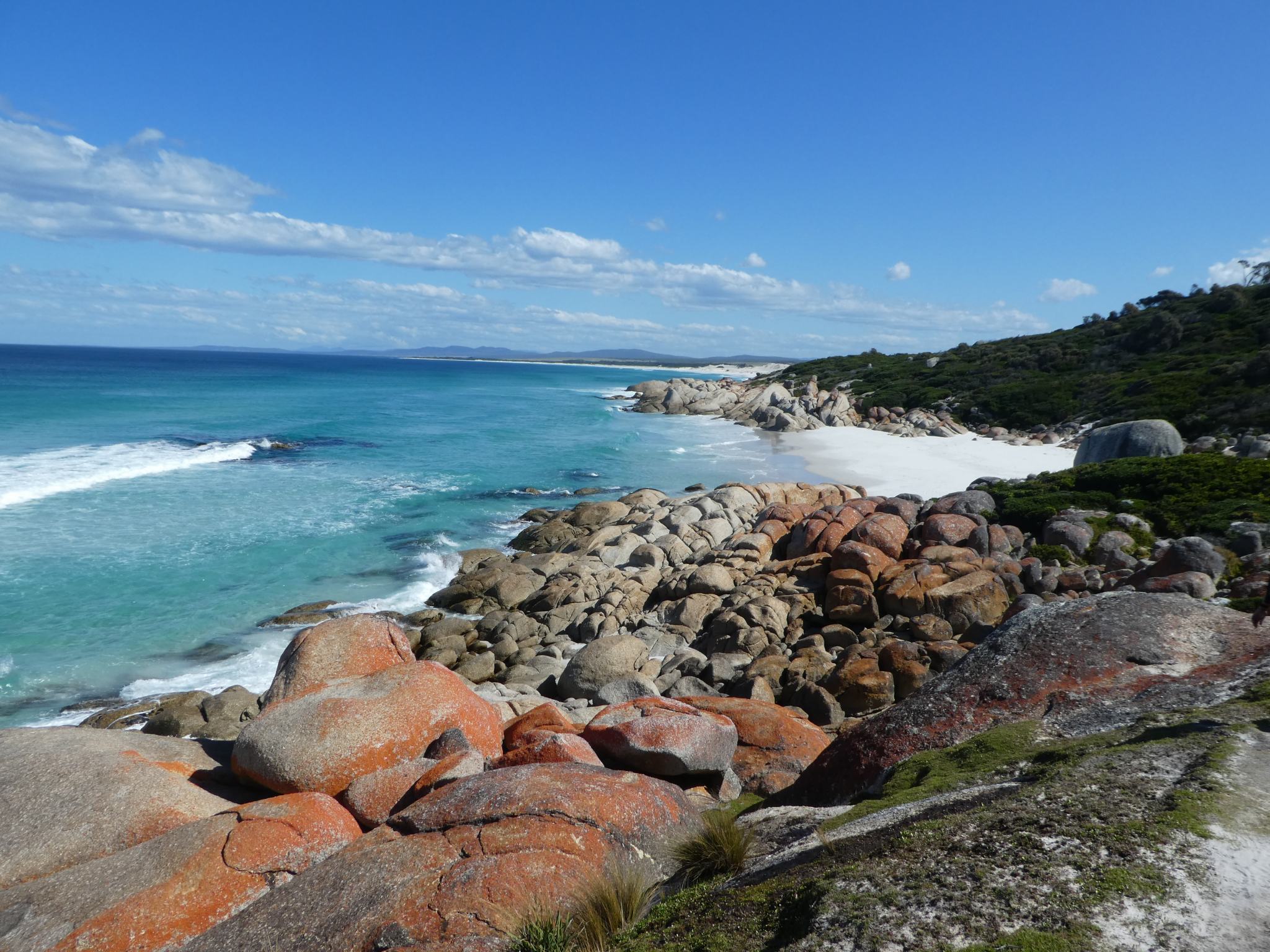 At the end of the day, looking back toward the lighthouse, this was where we had walked.  See the tiny pencil shape of the lighthouse on the point on the far horizon. 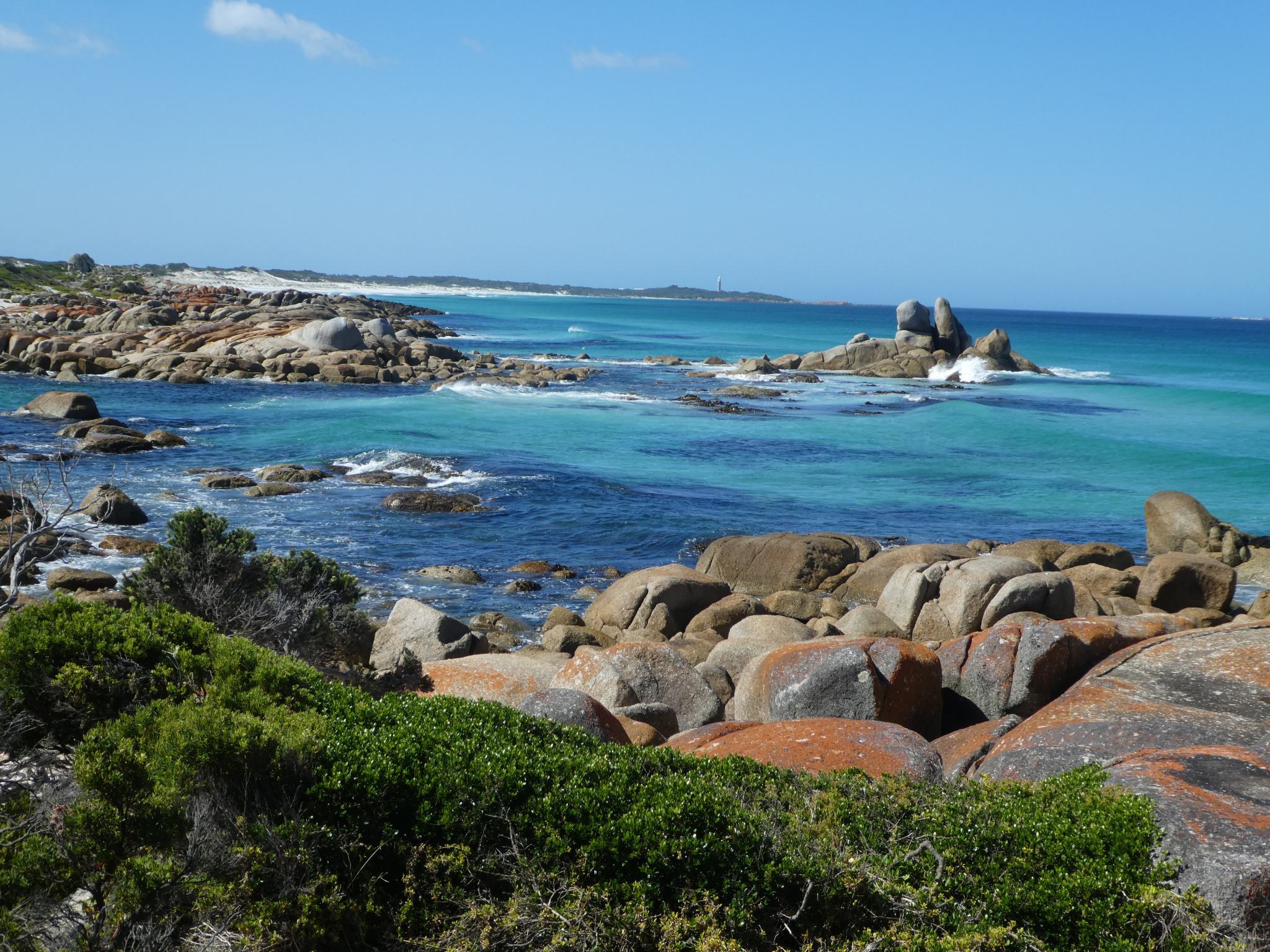 Late afternoon we reached the rather lovely Bay of Fires Ecolodge, perched on a cliff edge overlooking the sea.  A hot foot soak and a cold beer was a perfect finish to the walking day! 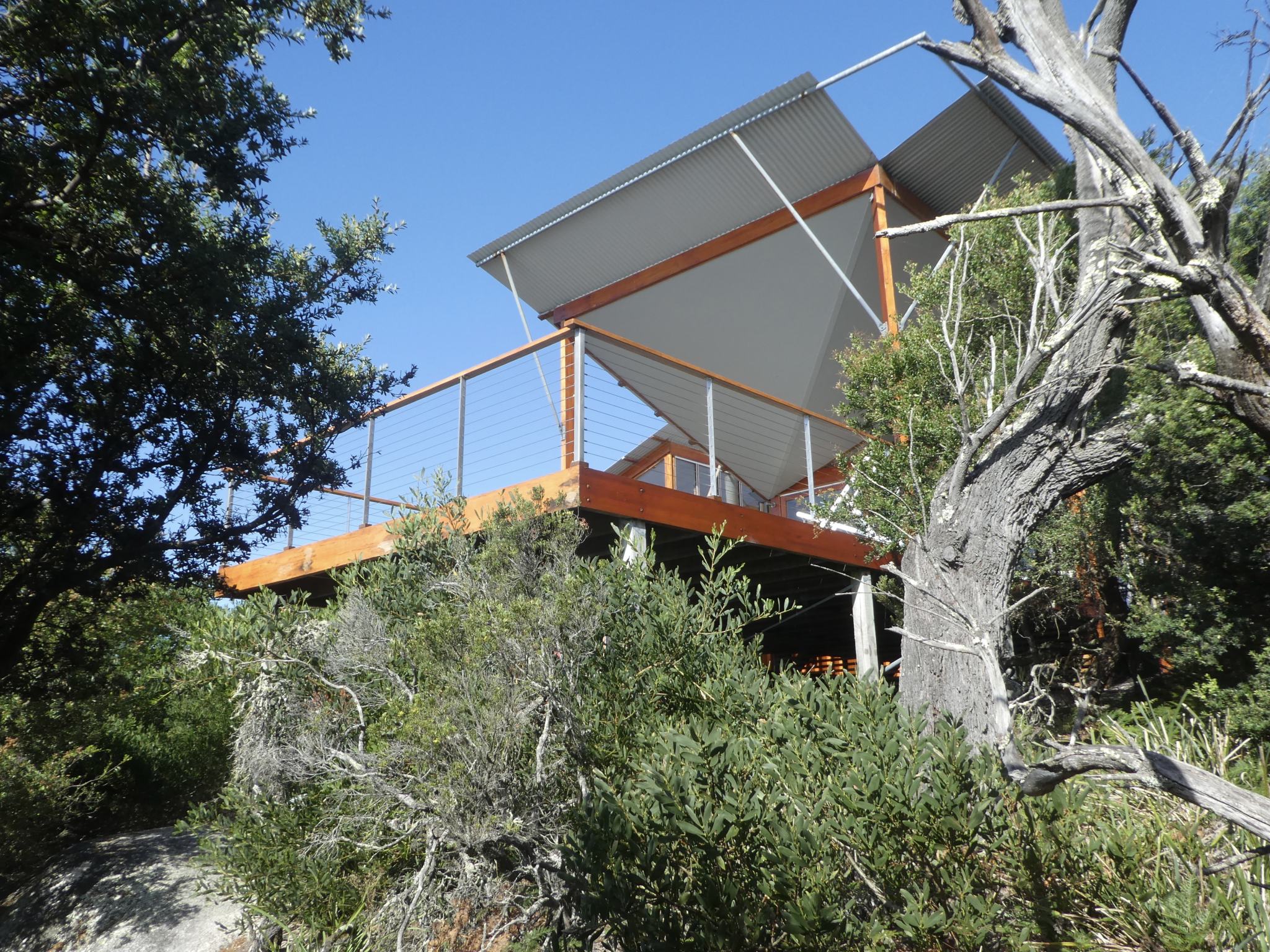 The next day we were driven to a weir on the Anson River where we clambered into kayaks for a leisurely paddle down the river to Anson Bay.  It was, again, glorious weather. 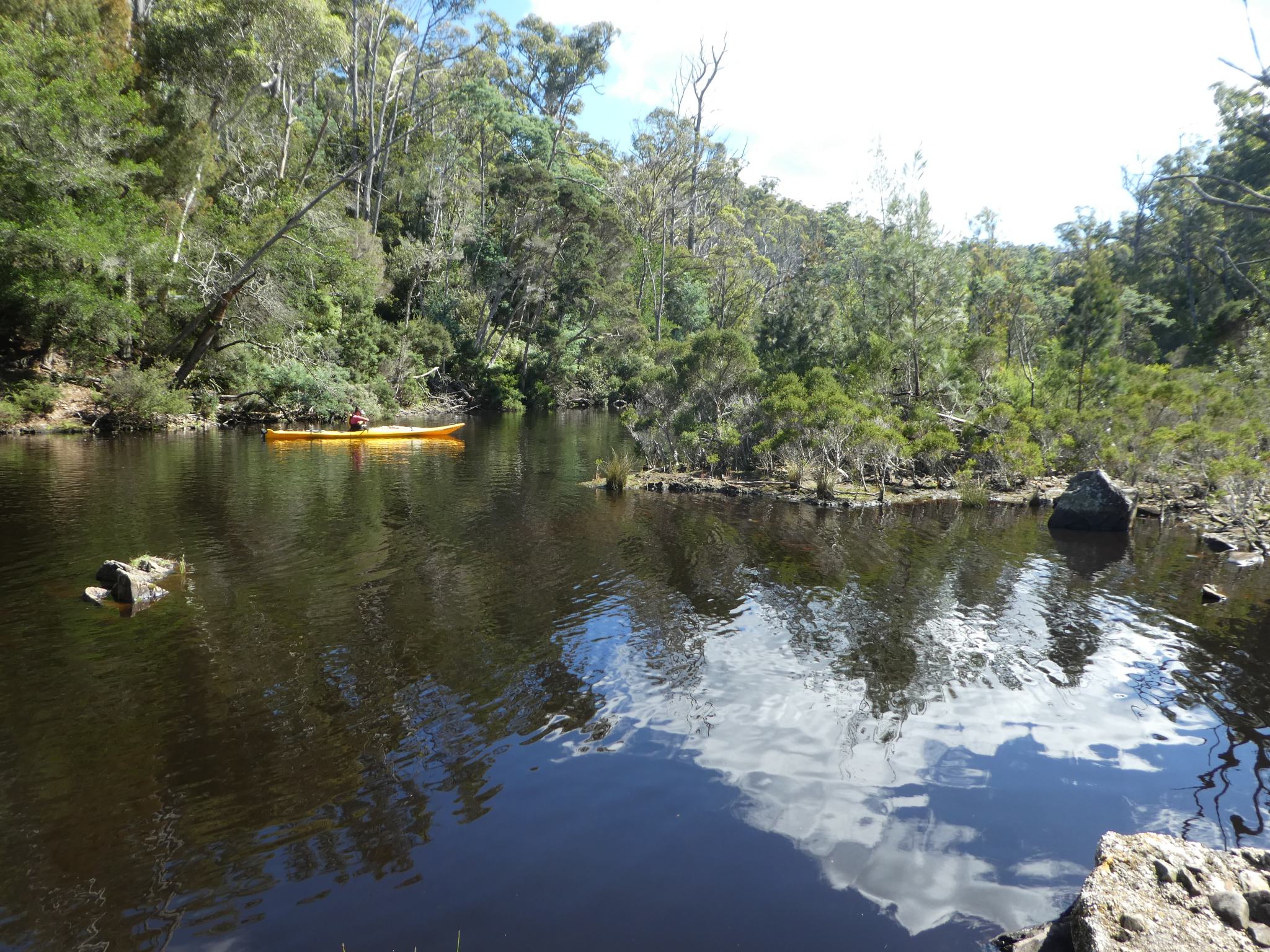 Until we reached the mouth of the river, that is.  A strong wind blew up, and unfortunately it was against us.  It was a moderately energetic paddle across the bay in order to keep going forward!

After lunch on the far side of the bay we walked a short distance through the bush to the beach, then north and back to the Bay of Fires Ecolodge.  Could anyone ever get bored with these landscapes?  We doubt it. 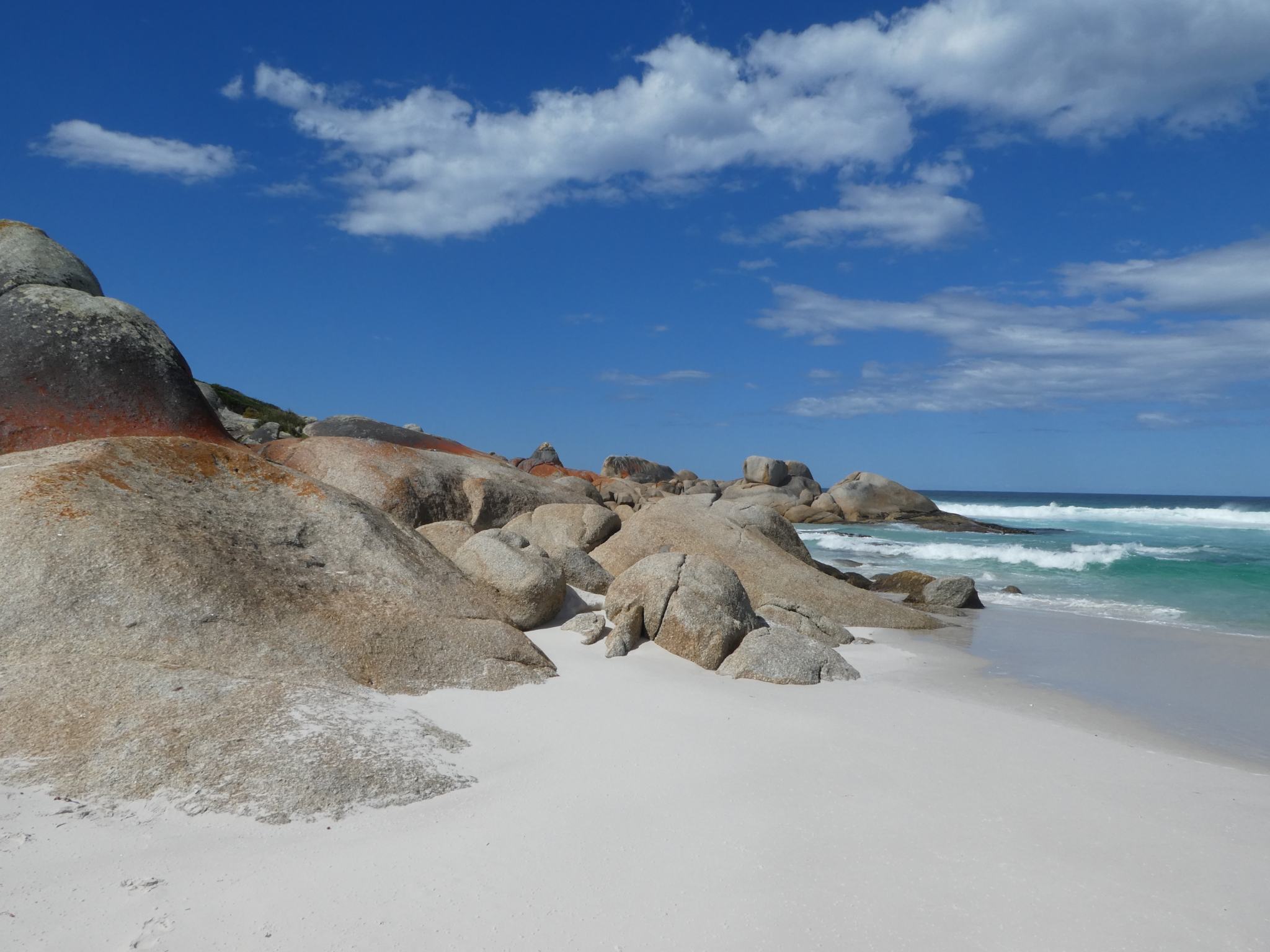 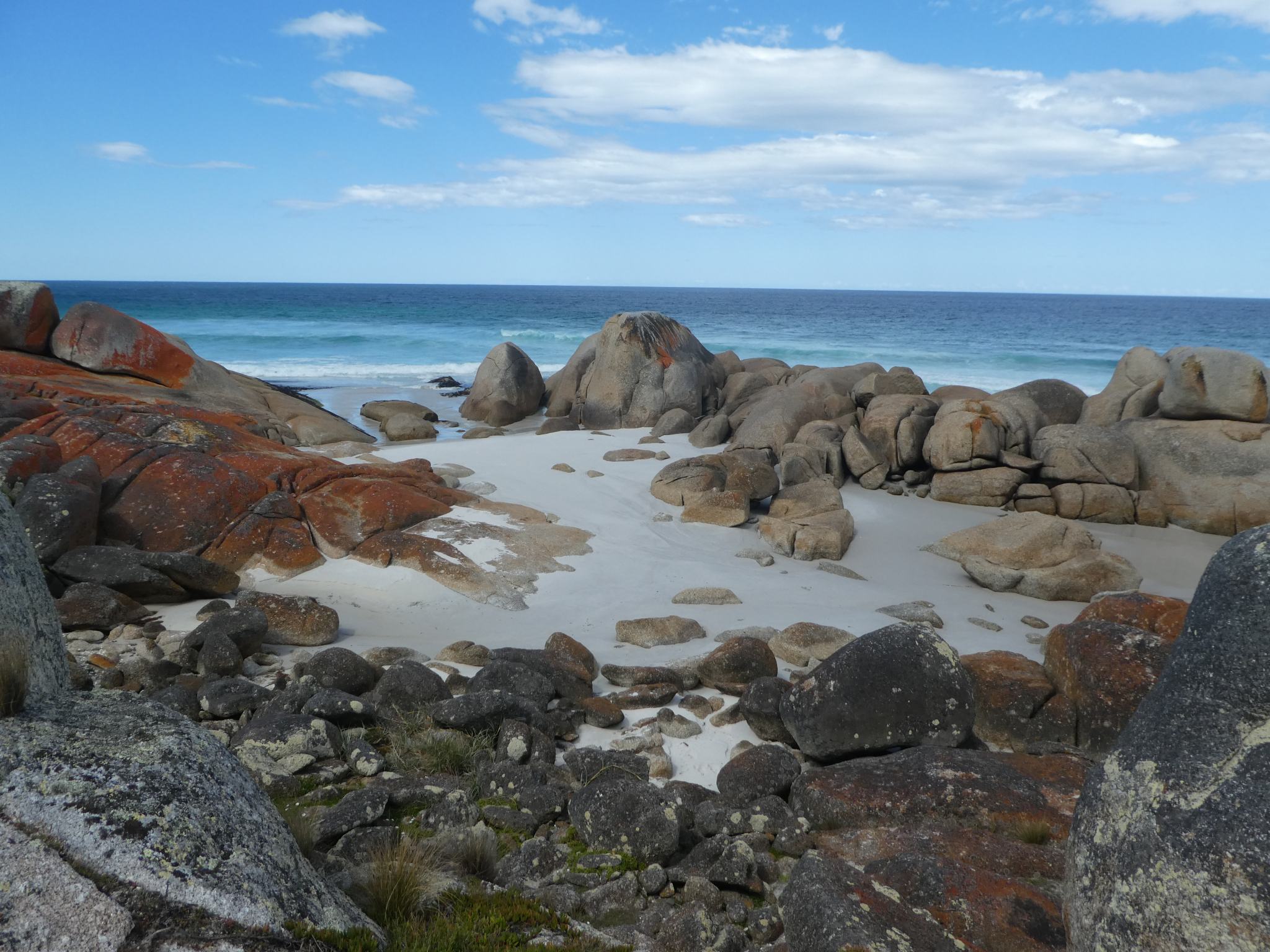 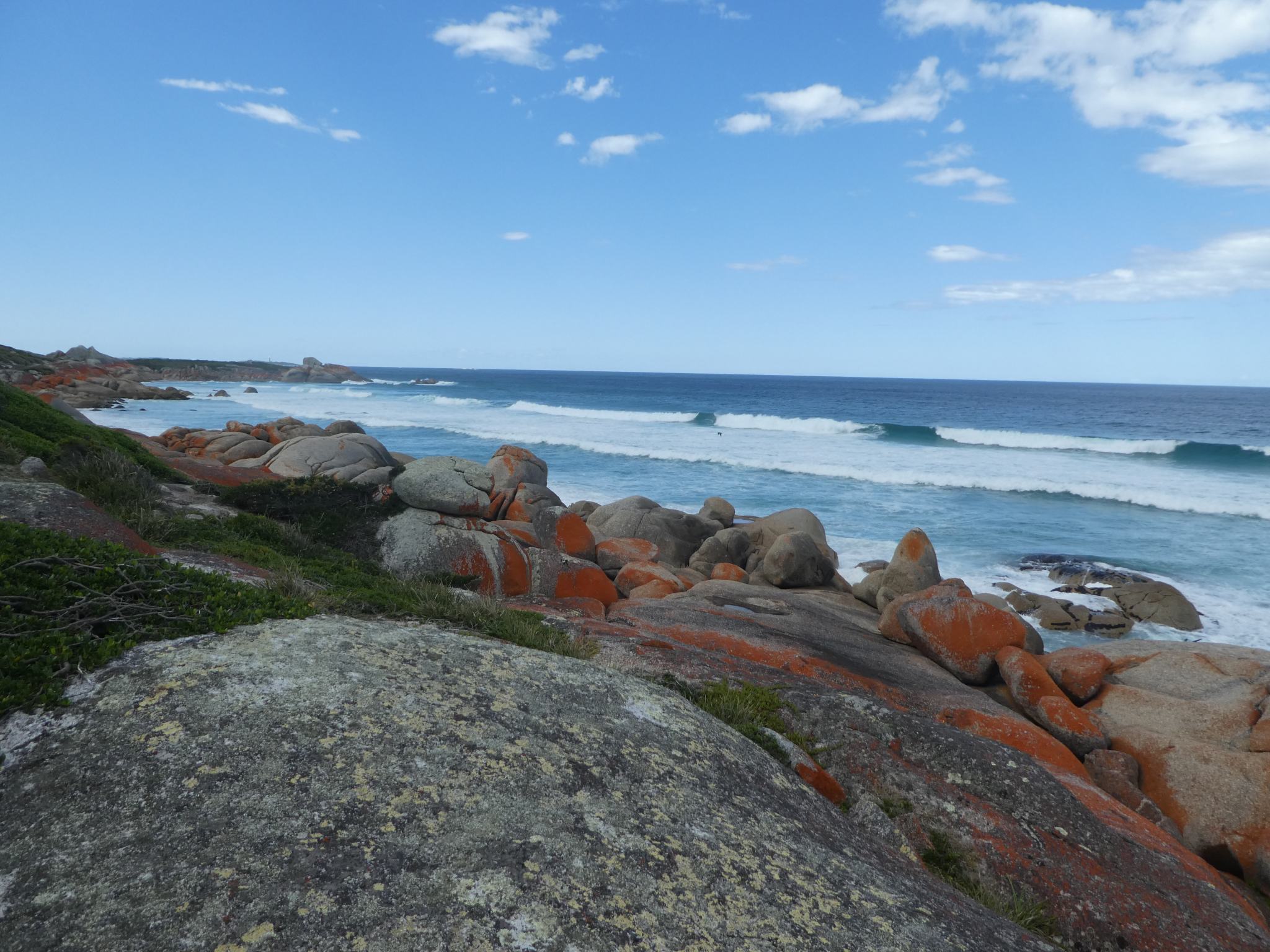 After a leisurely morning at the lodge and time for a massage, we had a short hour’s walk through a landscape of grasstrees. 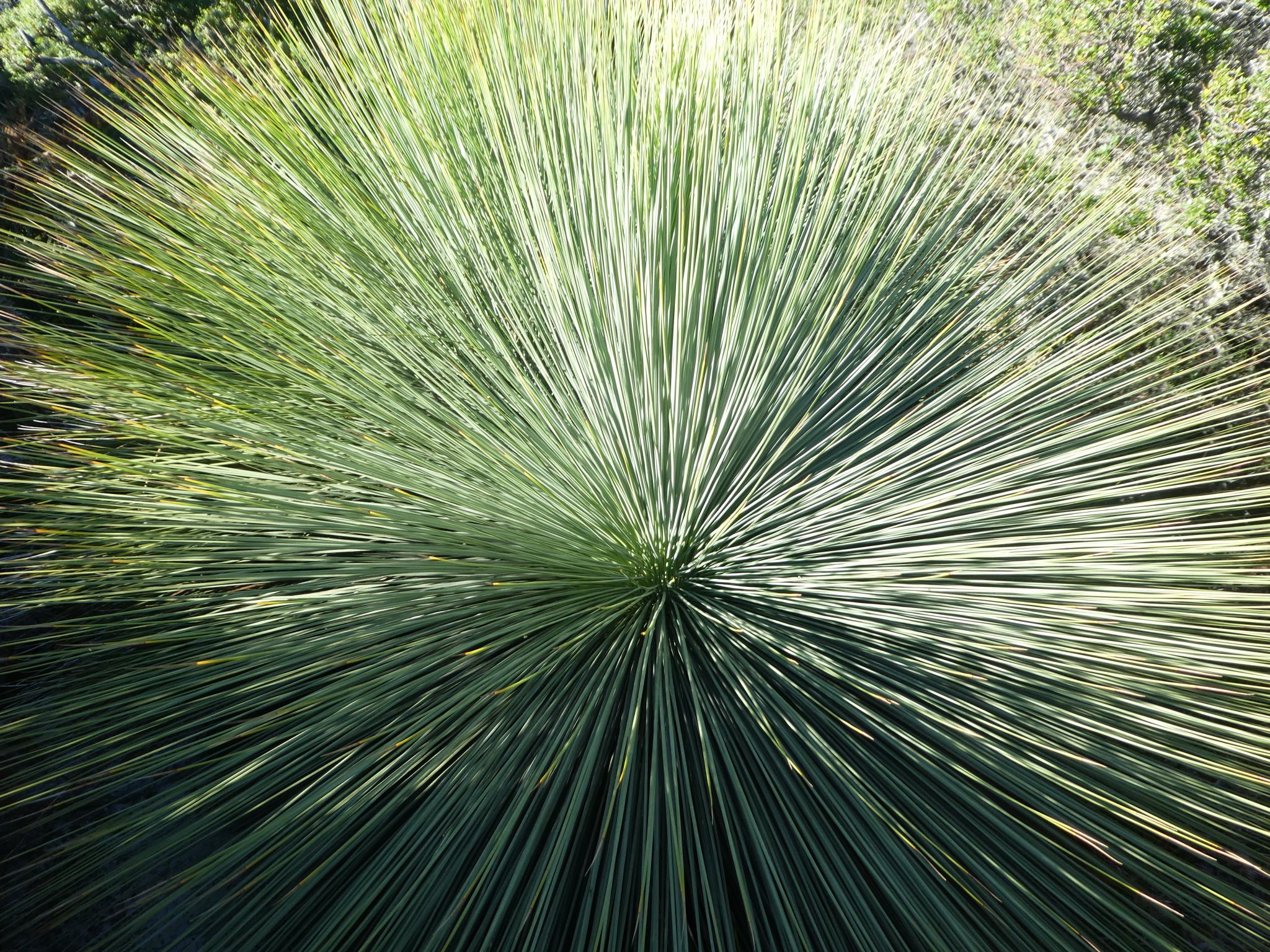 We stopped for lunch in a clearing, then out to a nearby dirt road where we were collected for the drive back to Launceston.

We walked with Tasmanian Walking Company and cannot recommend them highly enough.  The walk was well planned, logistics were seamless, the food and wine were local and delicious, and excellent information was given about the natural landscape, indigenous local culture and history.

It was just a short hike, but so good to be out travelling again.