A passenger ferry runs to the island several times per day from Triabunna on Tasmania’s east coast.  It’s only 9 nautical miles and takes about 30 minutes.

The ruins of 14 convict era buildings remain.  It is considered one of the most intact examples of a convict probation station in Australia, and one of 11 convict sites recognised by UNESCO as a World Heritage Site.

A few of the buildings have been restored, including the Commissariat Store. 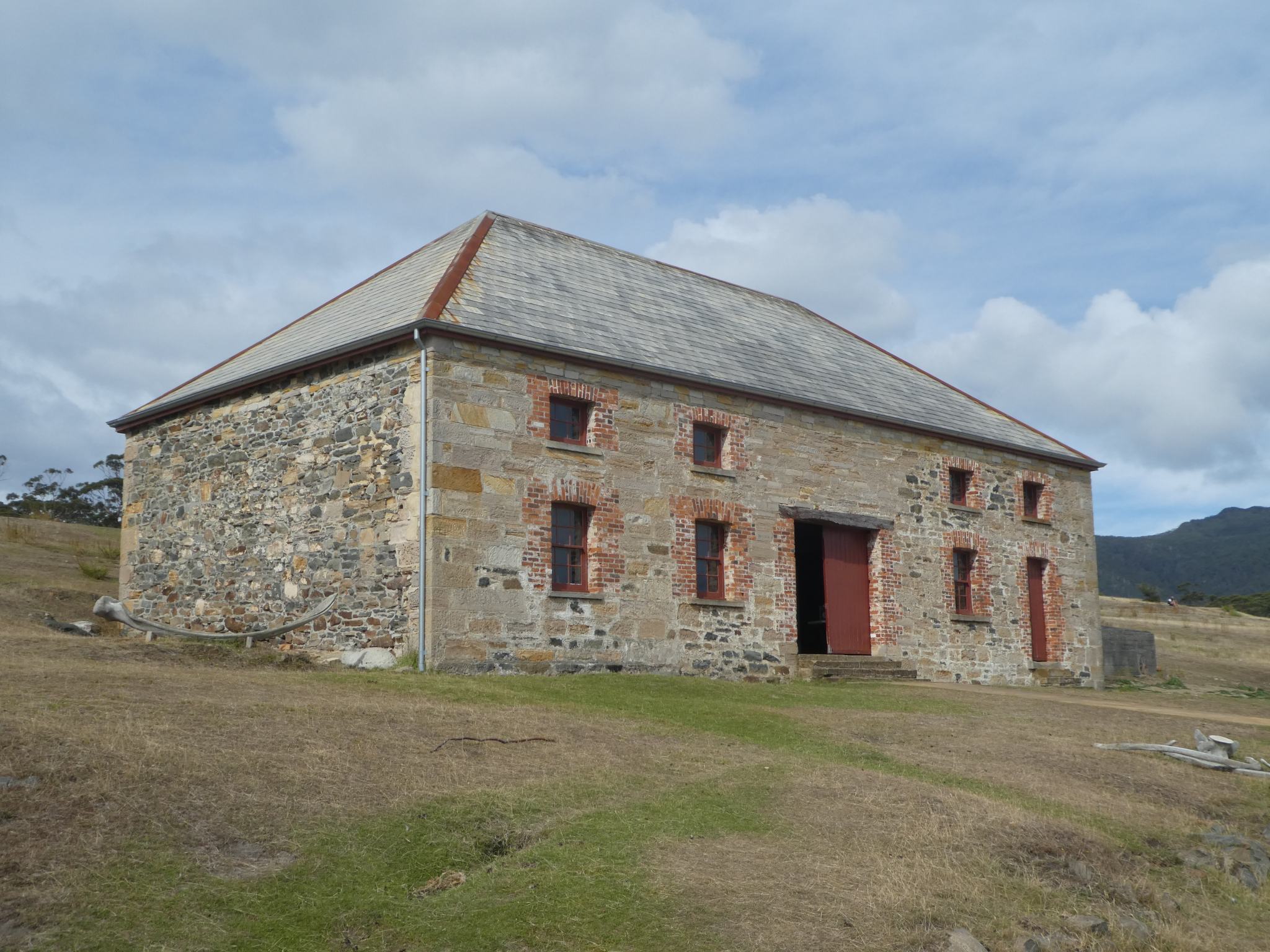 The old Penitentiary is now a bunkhouse where visitors can stay. 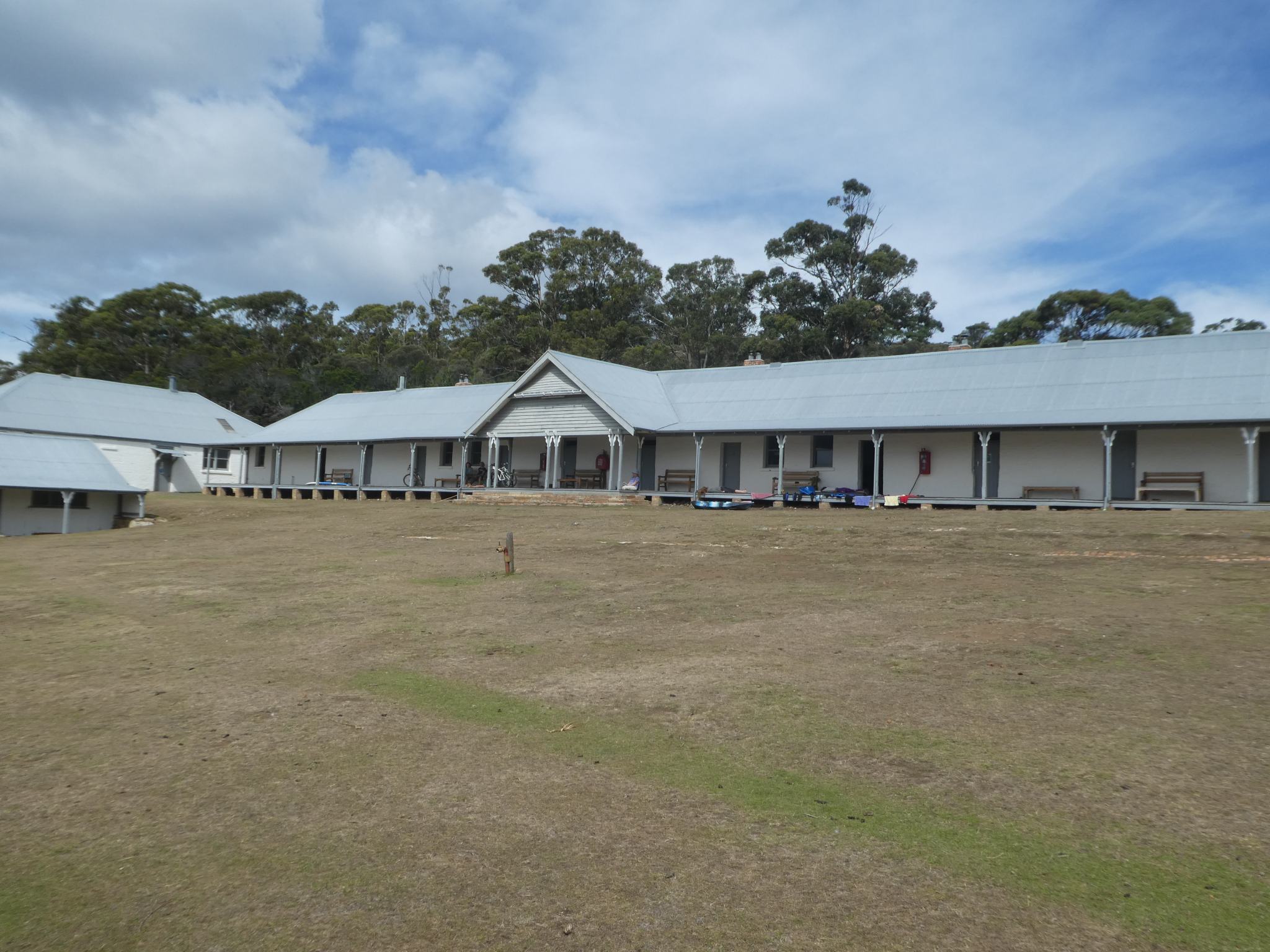 It looks rather salubrious from the outside but it has no electricity, toilets are in another building some distance away and the accommodation is limited to bunk rooms where you stretch out your own sleeping bag.  We didn’t stay.  If you catch the first ferry in the morning from Triabunna and the last one back in the afternoon, you can just about see everything on the southern part of the island.

After the penal colony closed, an entrepreneurial Italian silk merchant by the name of Diego Bernacchi persuaded the Tasmanian government to pass a special act of parliament in 1884 granting him a 10 year lease of the whole island for 1 shilling per year.

He planted fruit groves, a mulberry orchard for silk worm farming and 50,000 grape vines for wine production.  He built a 30 room Grand Hotel and a silver service Coffee Palace.  A newspaper article of the day dubbed the island ‘the Ceylon of Australasia’ for reasons that were not apparent to us, given the conspicuous absence of tea plantations, elephants and Hindu temples.

Bernacchi’s less romantic quarrying and cement businesses, and sheep and cattle fattening enterprises were initially successful.  Things looked promising but it wasn’t to last.  100 years before Australia’s rogue entrepreneurs of the 1980s, Bernacchi floated a company, raised a pile of cash, flourished for a while, then went broke during the 1890s depression and disappeared back to Europe.

Industry continued and at its peak the island had a population of over 500 people and two hotels.  But the Great Depression and the high cost of transporting products back to the Tasmanian mainland led to closure of the quarry and the cement works in the 1930s.  Most residents left then.

The ruins of old industry buildings from that era can be seen, gradually crumbling. 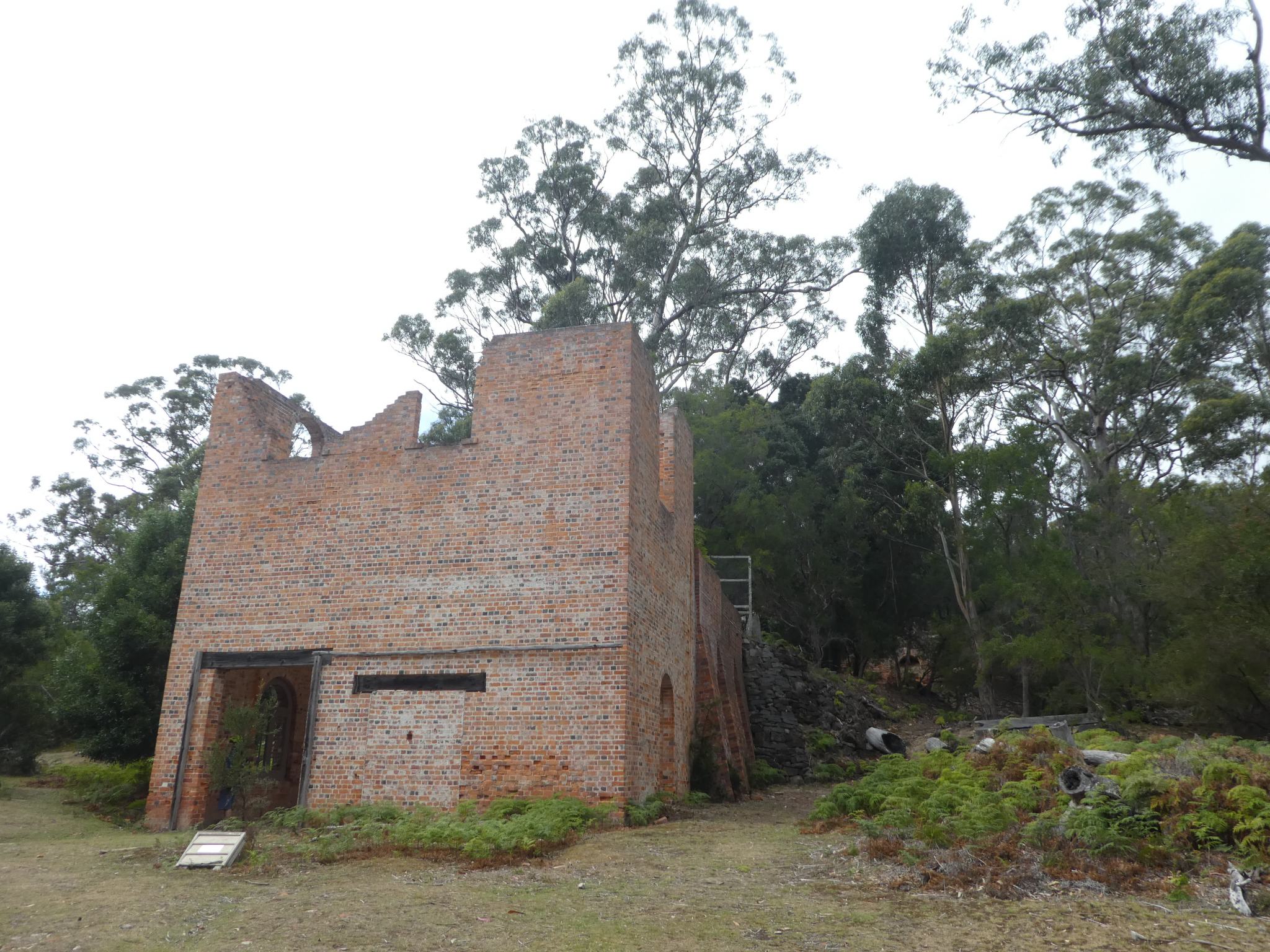 A few determined farming and fishing families battled on.  It was a tough life, no doubt motivated by their love for the place rather than by favourable economics.   This is the cottage belonging to a widow who stayed until well into the 1960s operating the island’s only radio transmitter. 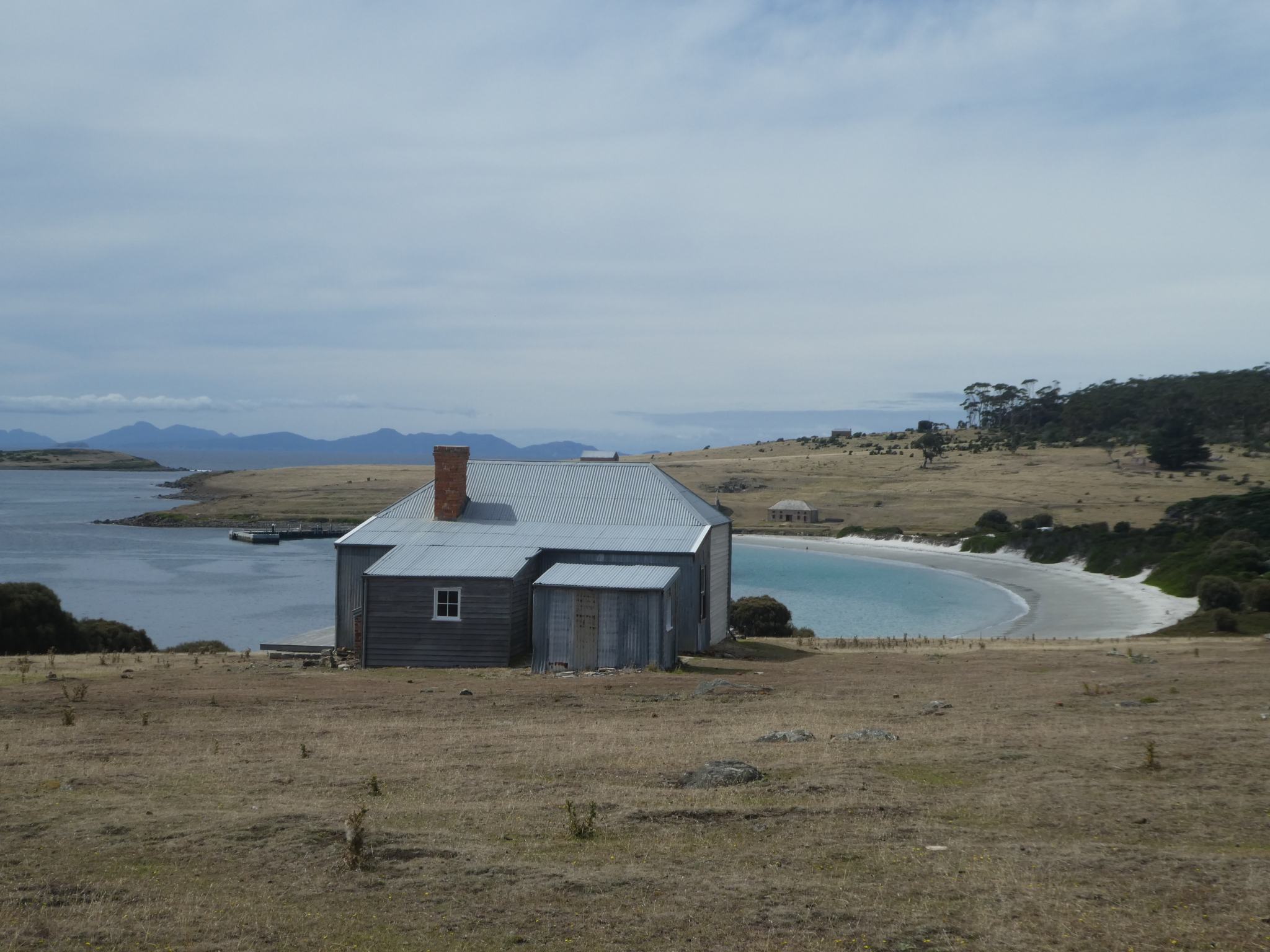 The entire island was declared a national park in 1972.   No one lives here now, except for a few national park rangers.  There are no vehicles and the only roads are those maintained by TasParks  for accessing the different areas of the island for works.  As such, it’s a wildlife haven.

The island is home to many, many bare nosed wombats.  They graze openly on the grassed areas around the shore and do not appear to be perturbed by human visitors wandering past. 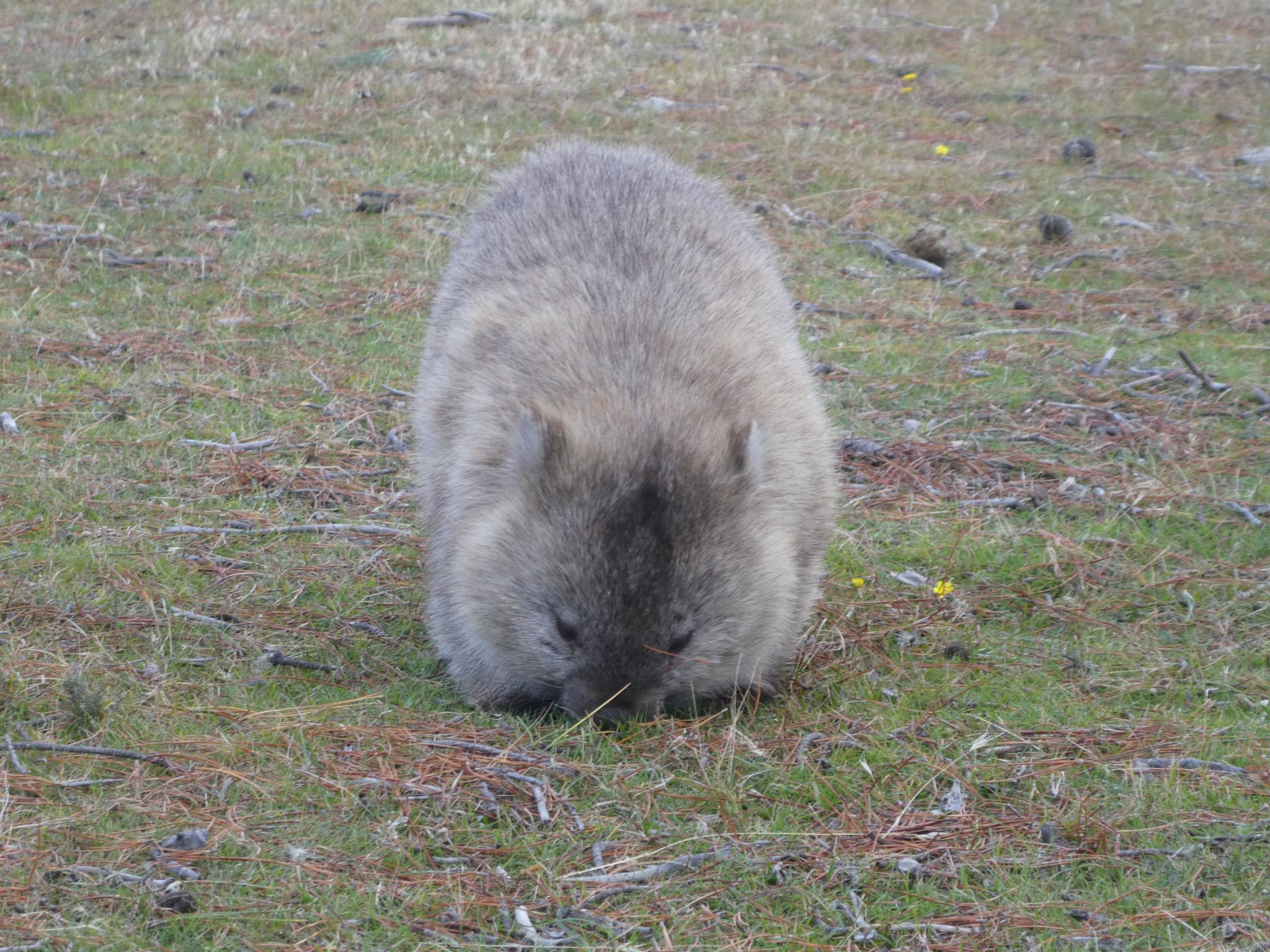 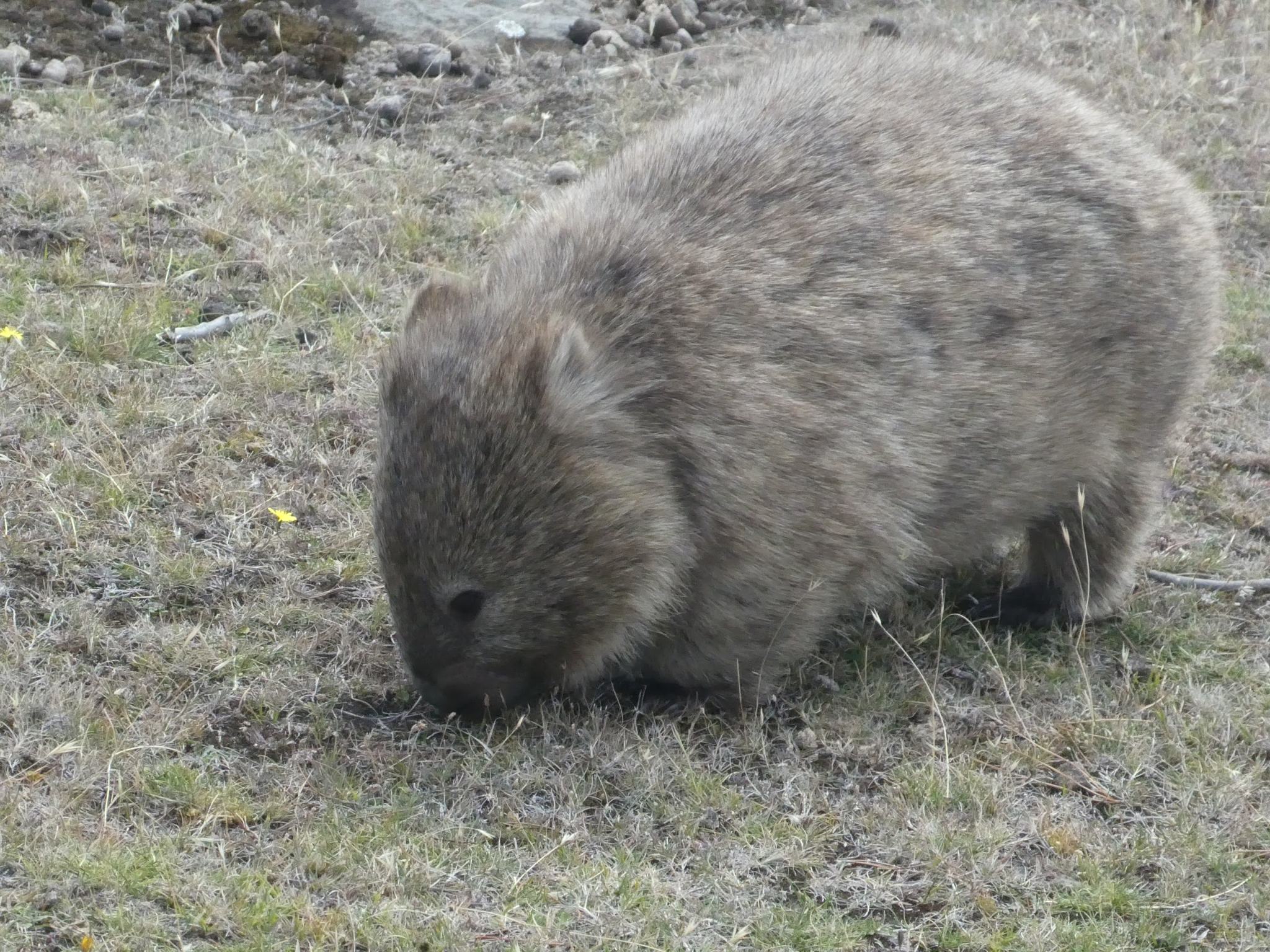 In fact, they make full use of the structures built in past times and now abandoned. 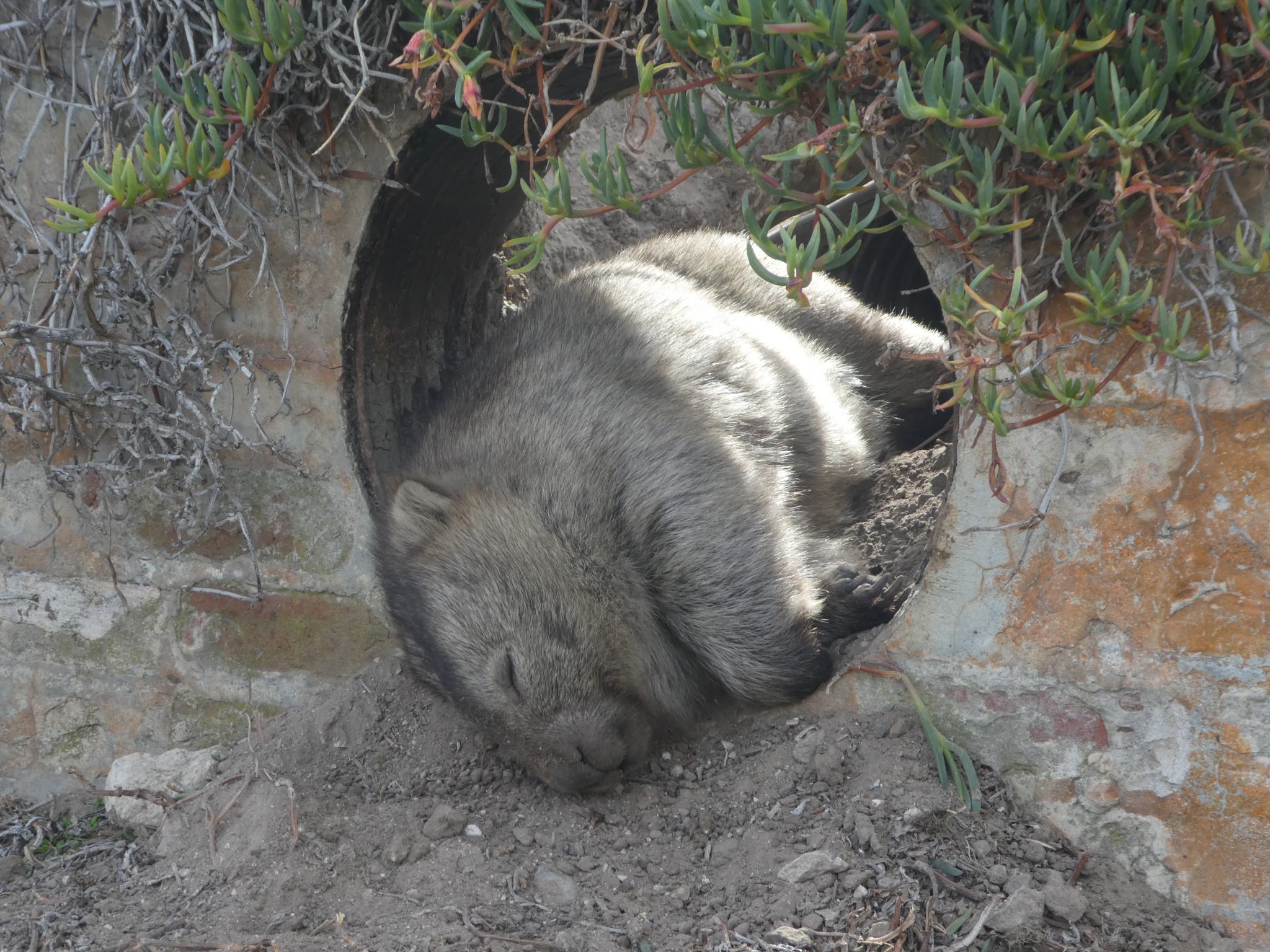 Pademelons are also native to the island and common to see, although they are quite shy of people. 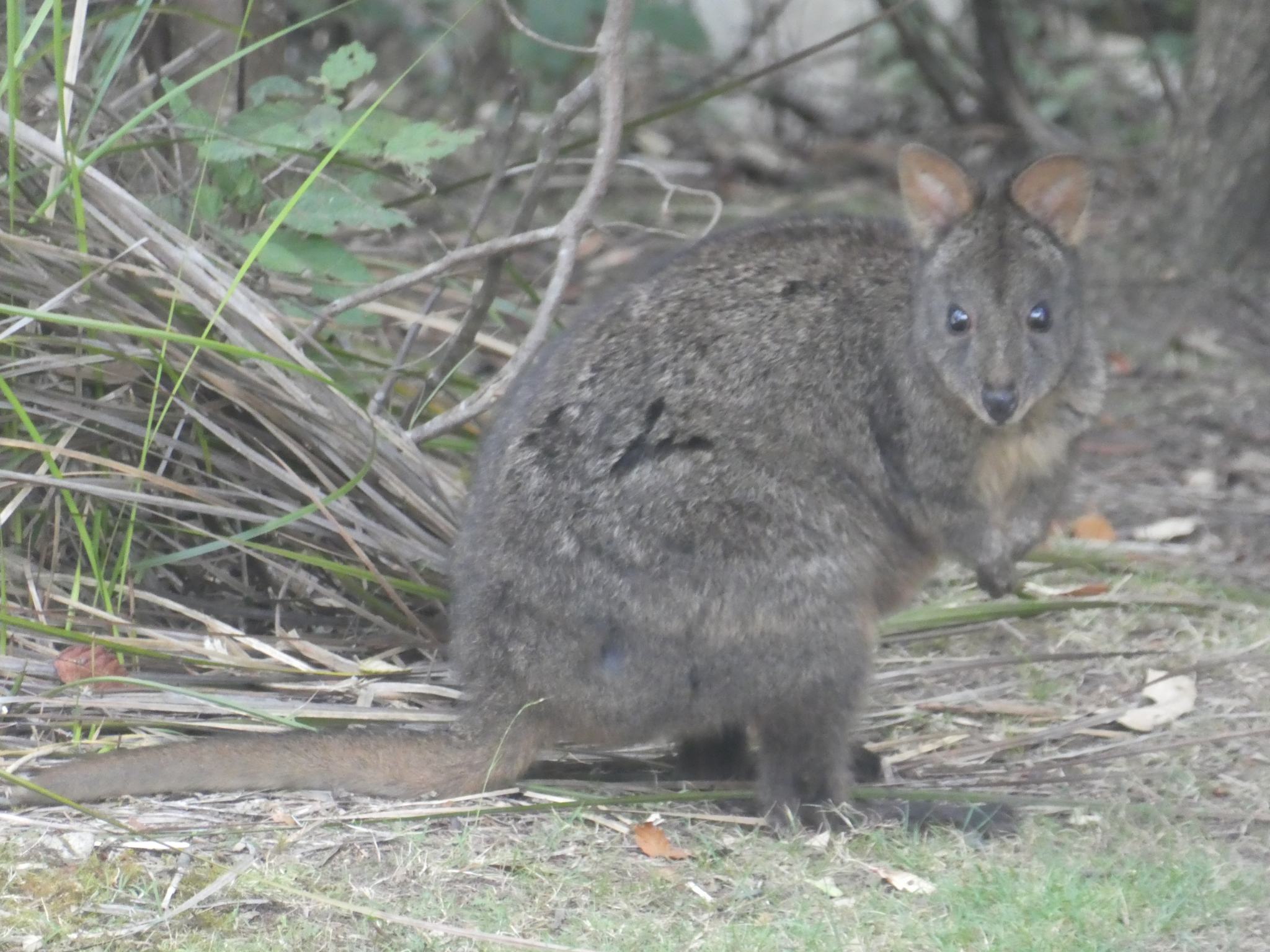 Forester kangaroos were introduced in the 1960s and 70s.  They seem to have found the island life satisfactory. 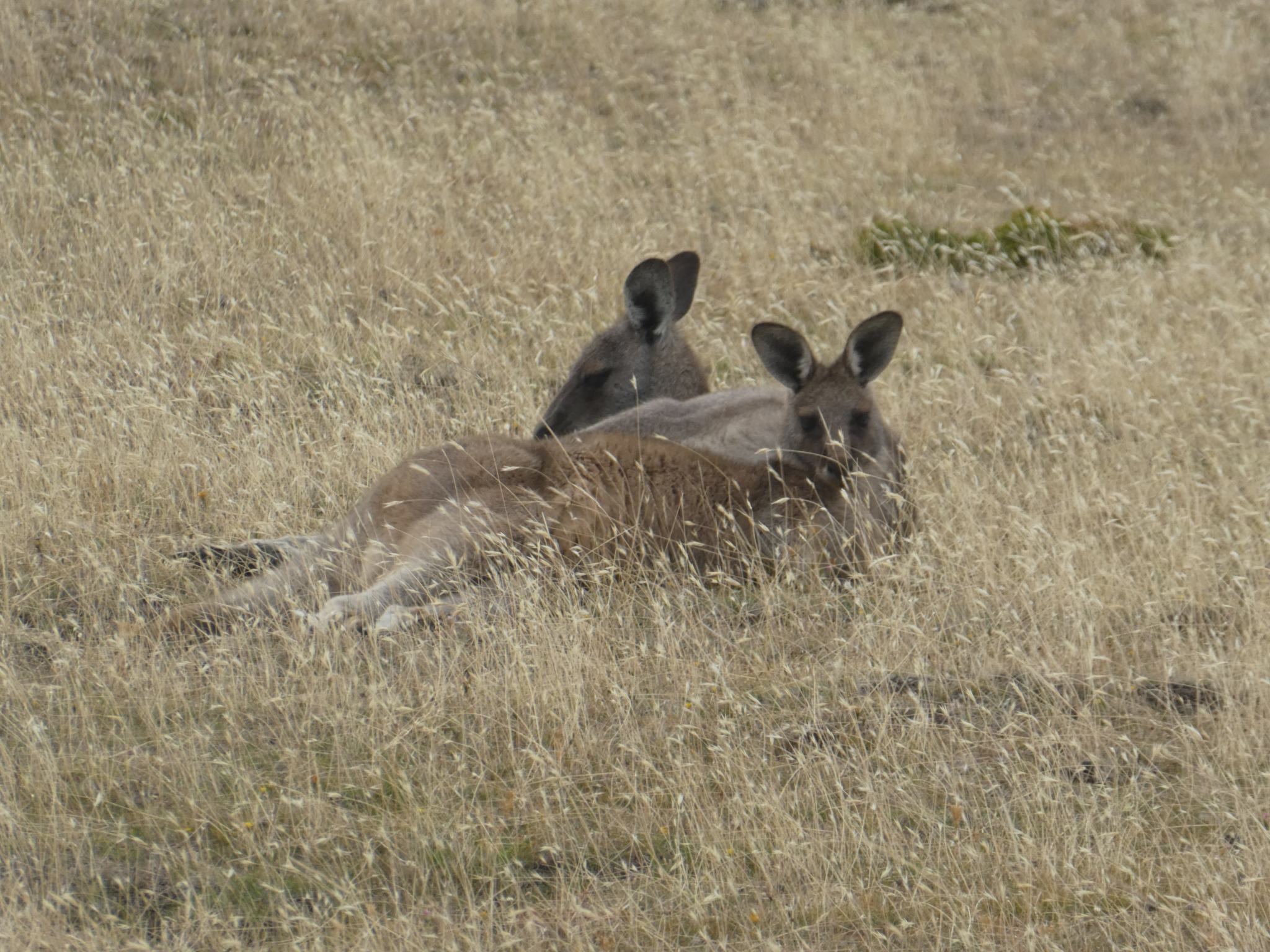 Maria Island has been designated an Important Bird Area (IBA) by Birdlife International because it supports populations of two endangered species: swift parrots and forty-spotted pardolotes.  The pardolotes are small, timid and are Australia’s most endangered bird, so it’s not surprising we didn’t see any.  But we did see lots of Cape Barron Geese and Tasmanian Native Hens. 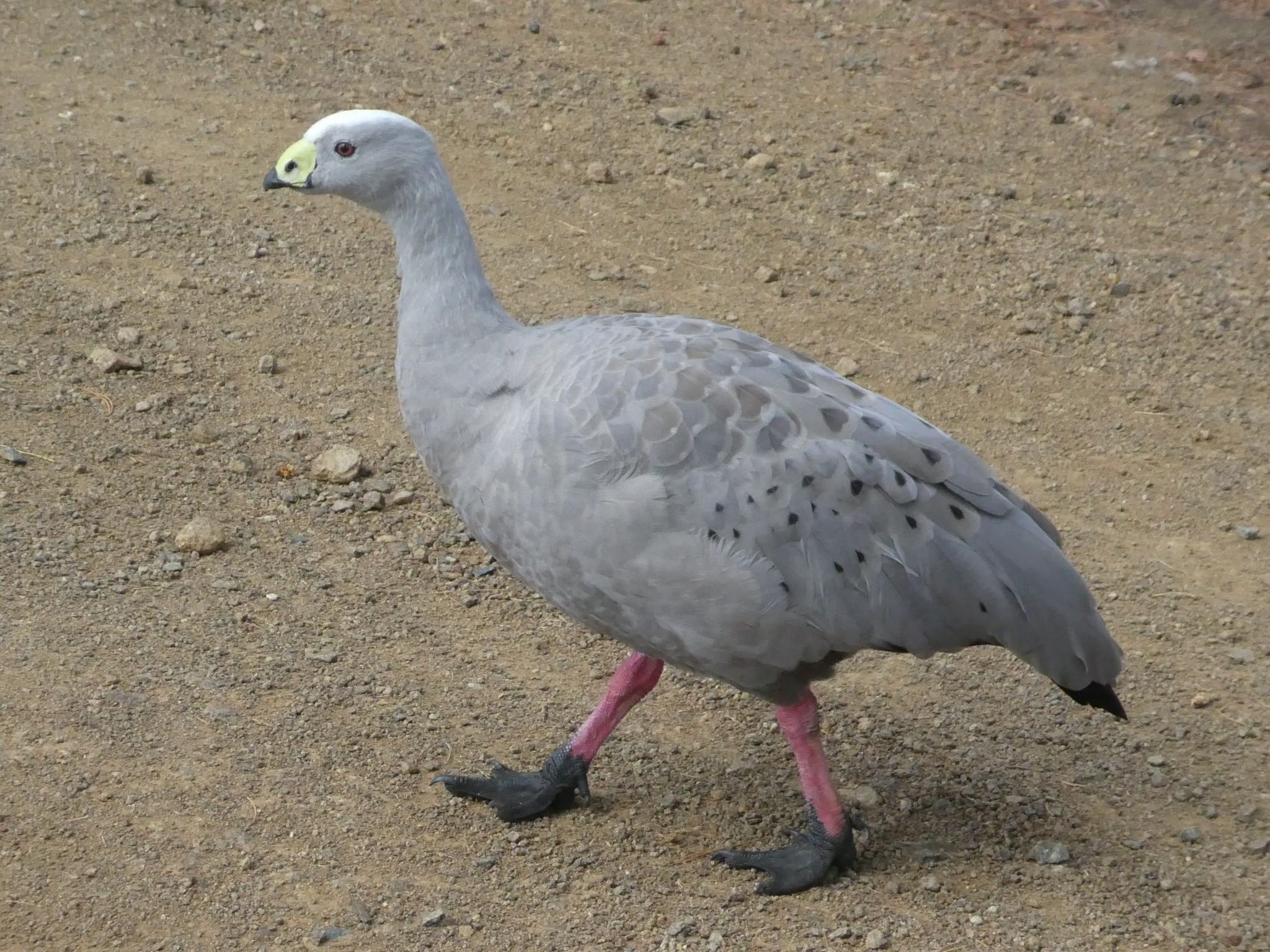 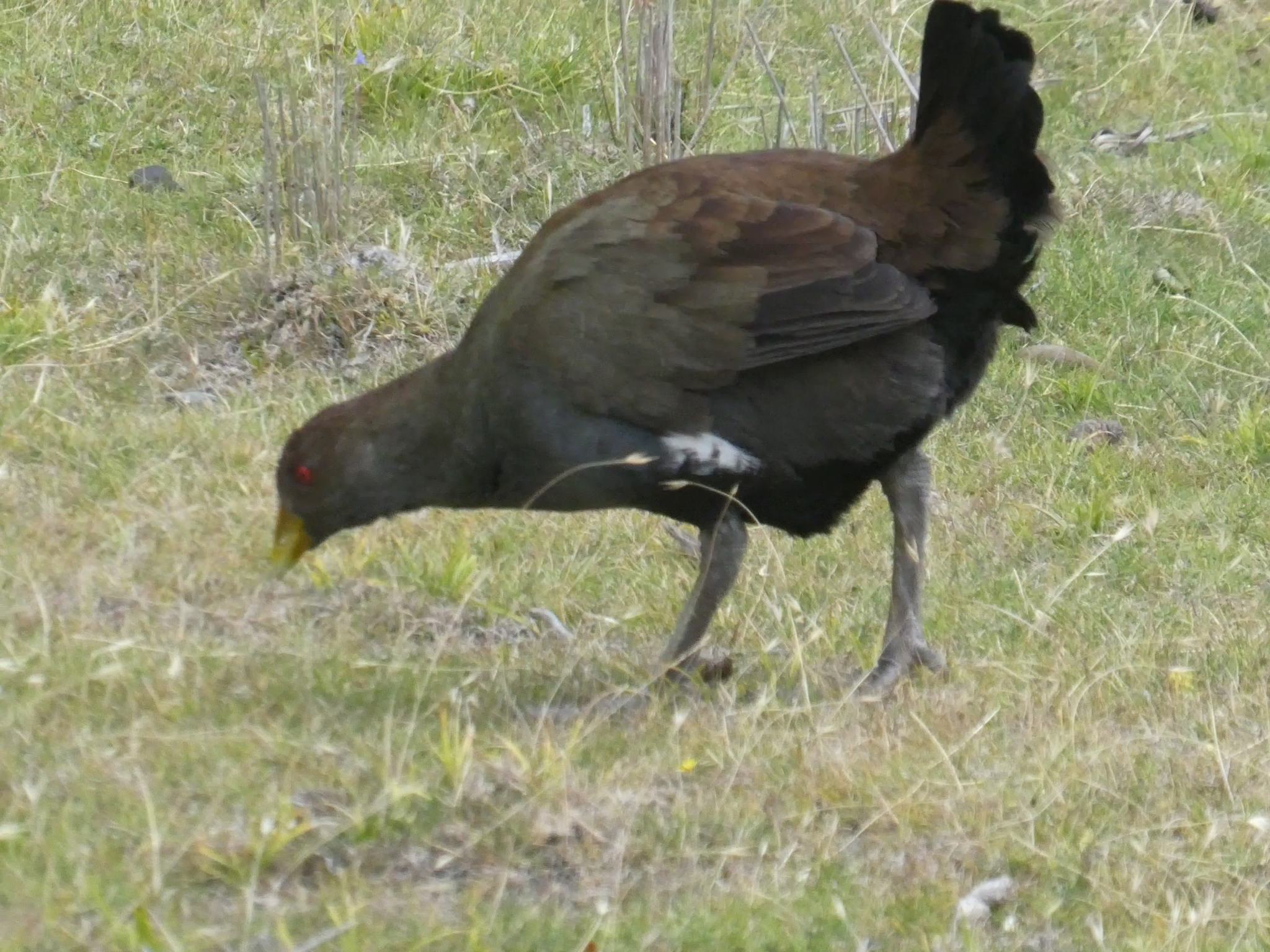 Tasmanian devils were introduced in 2012 as part of a program to create isolated colonies of devils free of devil facial tumour disease.  This awful form of cancer has decimated devil populations in Tasmania and the colonies are an ‘insurance policy’ against the possible loss of the entire species from the disease.

We did not see any here, but we did see them down on the Tasman Peninsula a couple of days later.  Here’s a few pics.  They are cute.  Until they snarl. 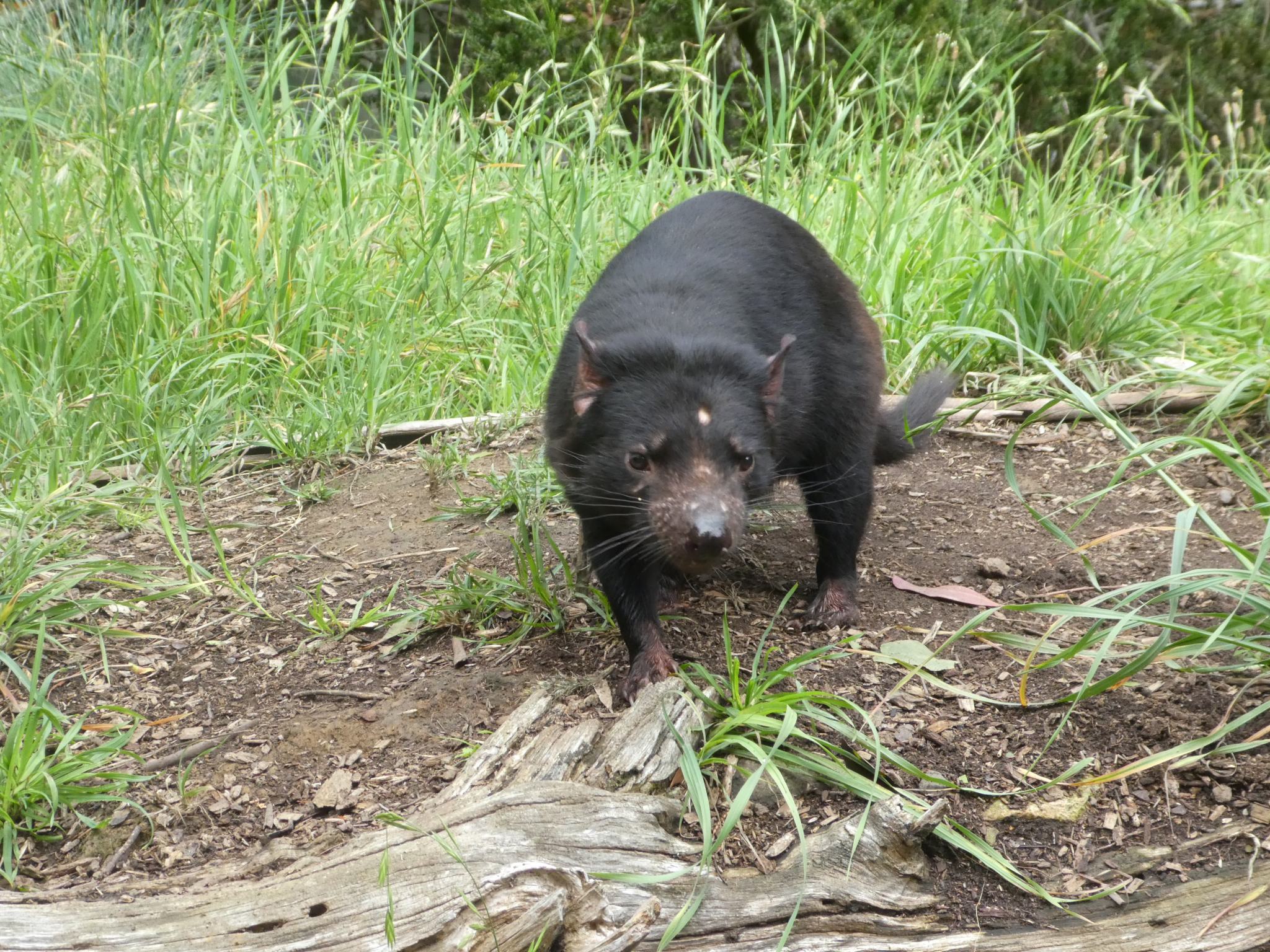 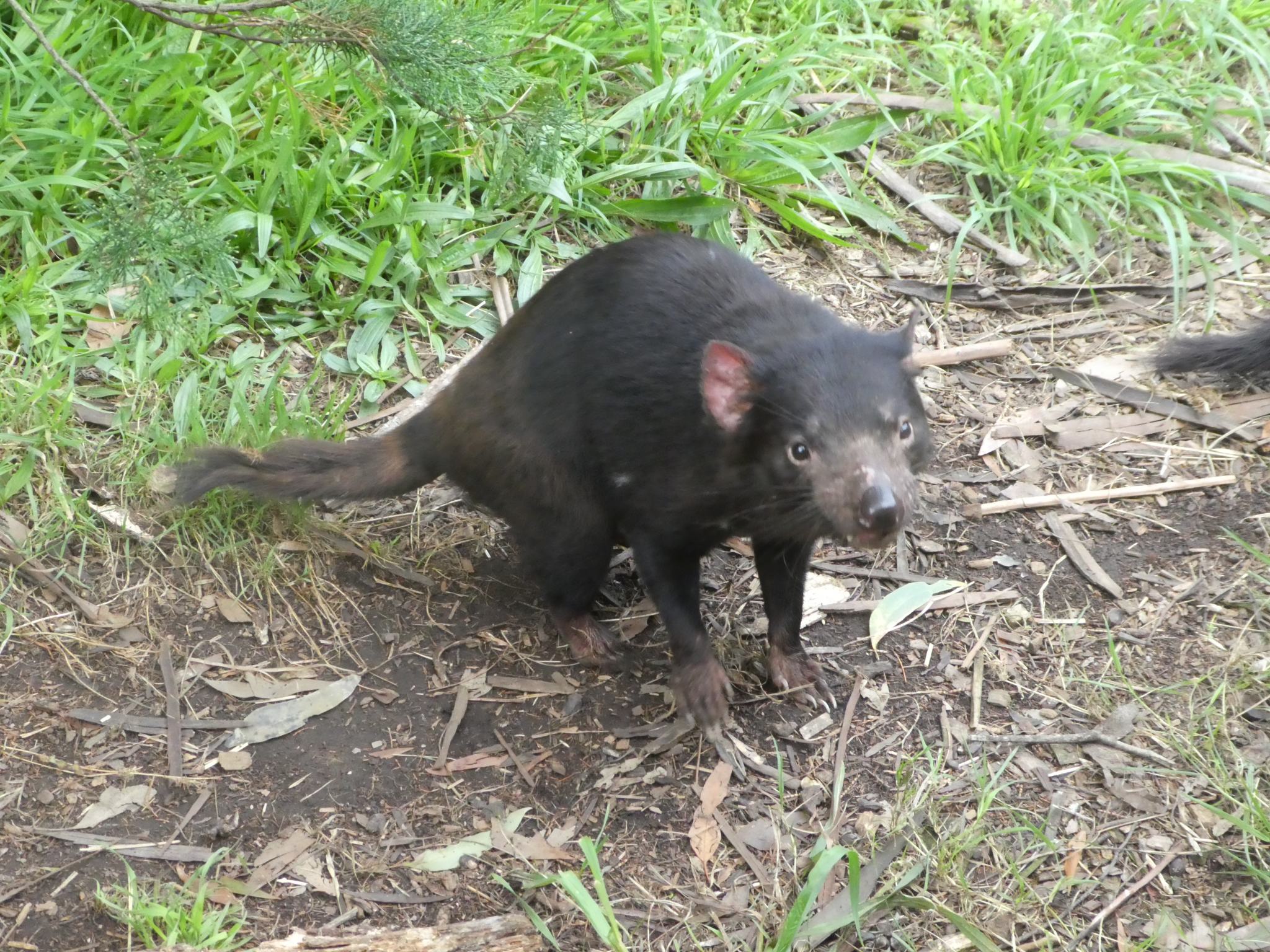 The island also has some really interesting geological phenomena.  A short walk from the jetty is the Fossil Cliffs.  These limestone cliffs contain fossilised marine creatures including clams, scallop shells, sea fans and coral dating back 300 million years. 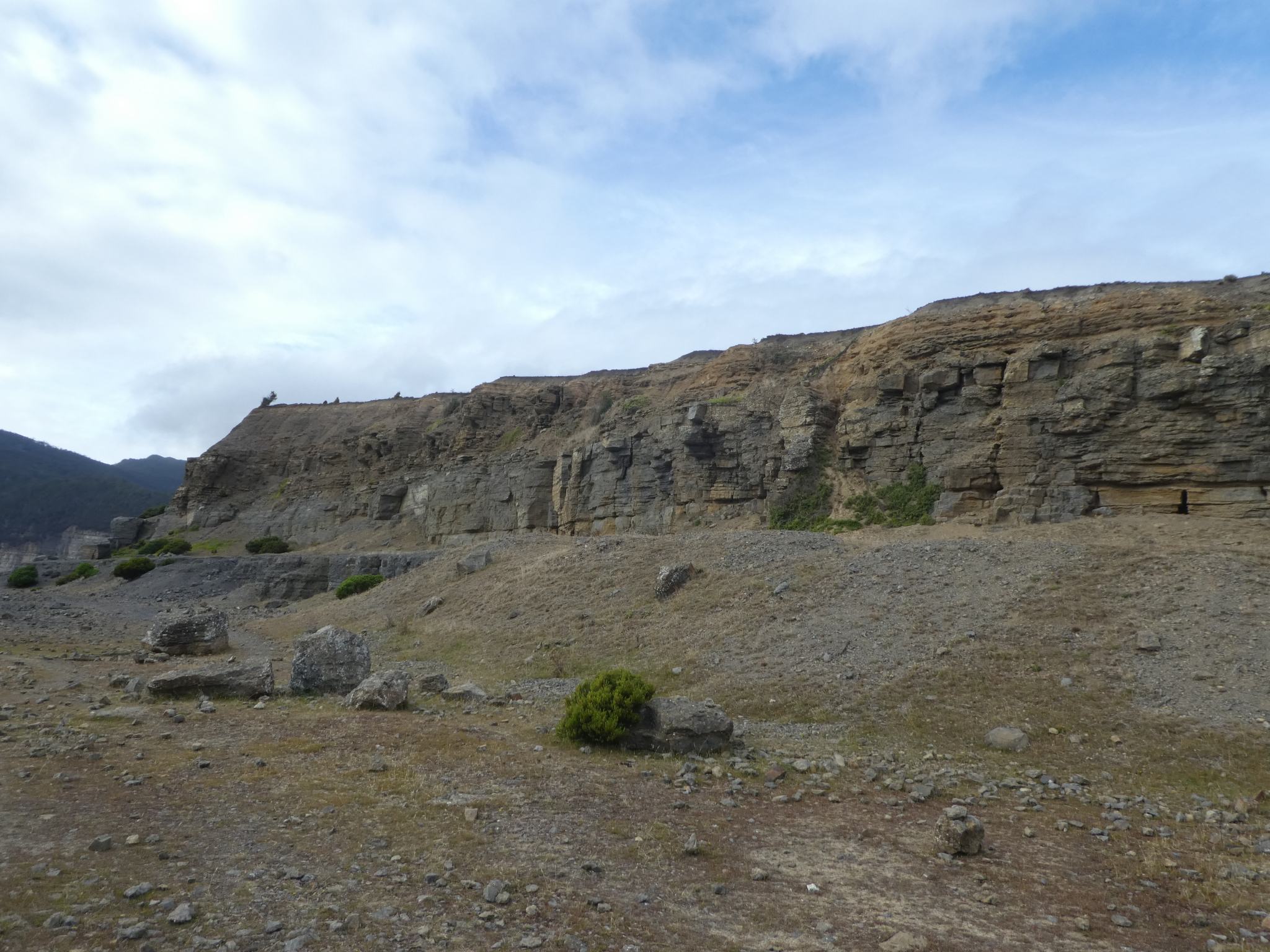 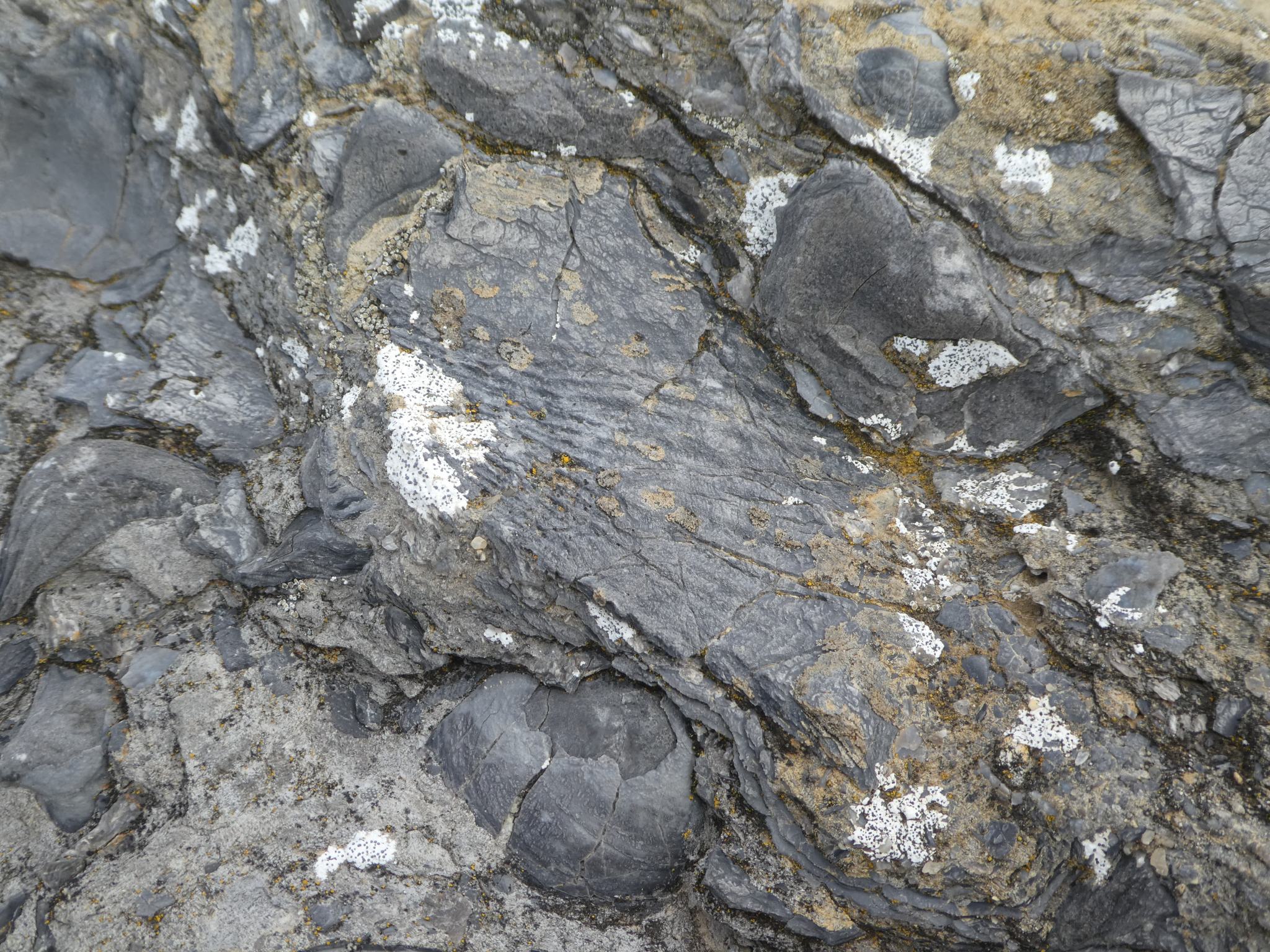 From the top of the Fossil Cliffs you can walk to Bishop and Clerk.  These are twin peaks on the edge of the island, comprised of massive dolerite columns.  They are named because of their supposed resemblance to a bishop being followed by a junior priest.

From the start point, the walk to the peaks looks quite flat. 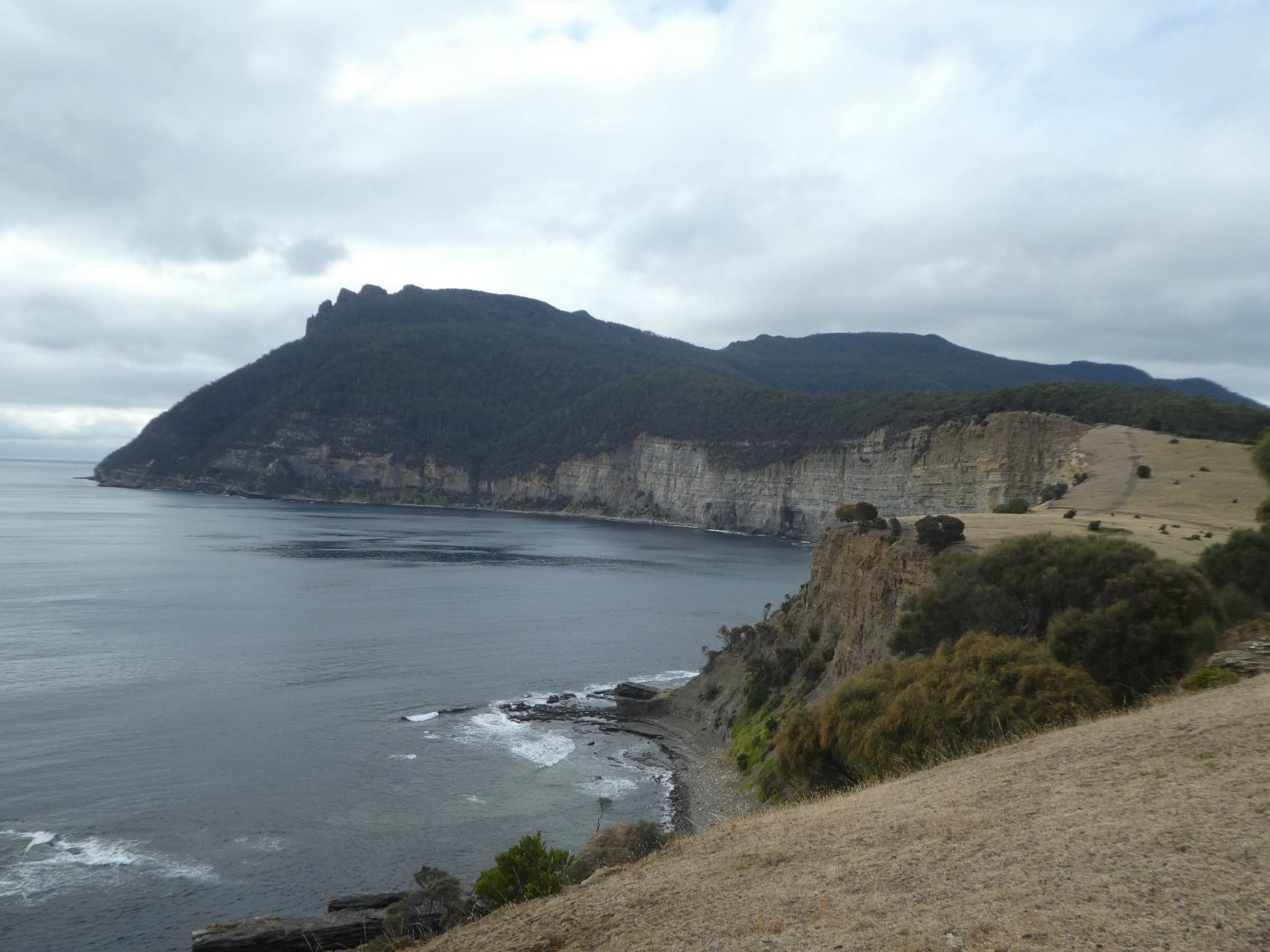 It’s not.  It’s a 12km return walk which involves a great deal of scrambling up rocks and the final section is a stiff hand-over-hand climb up large square boulders. 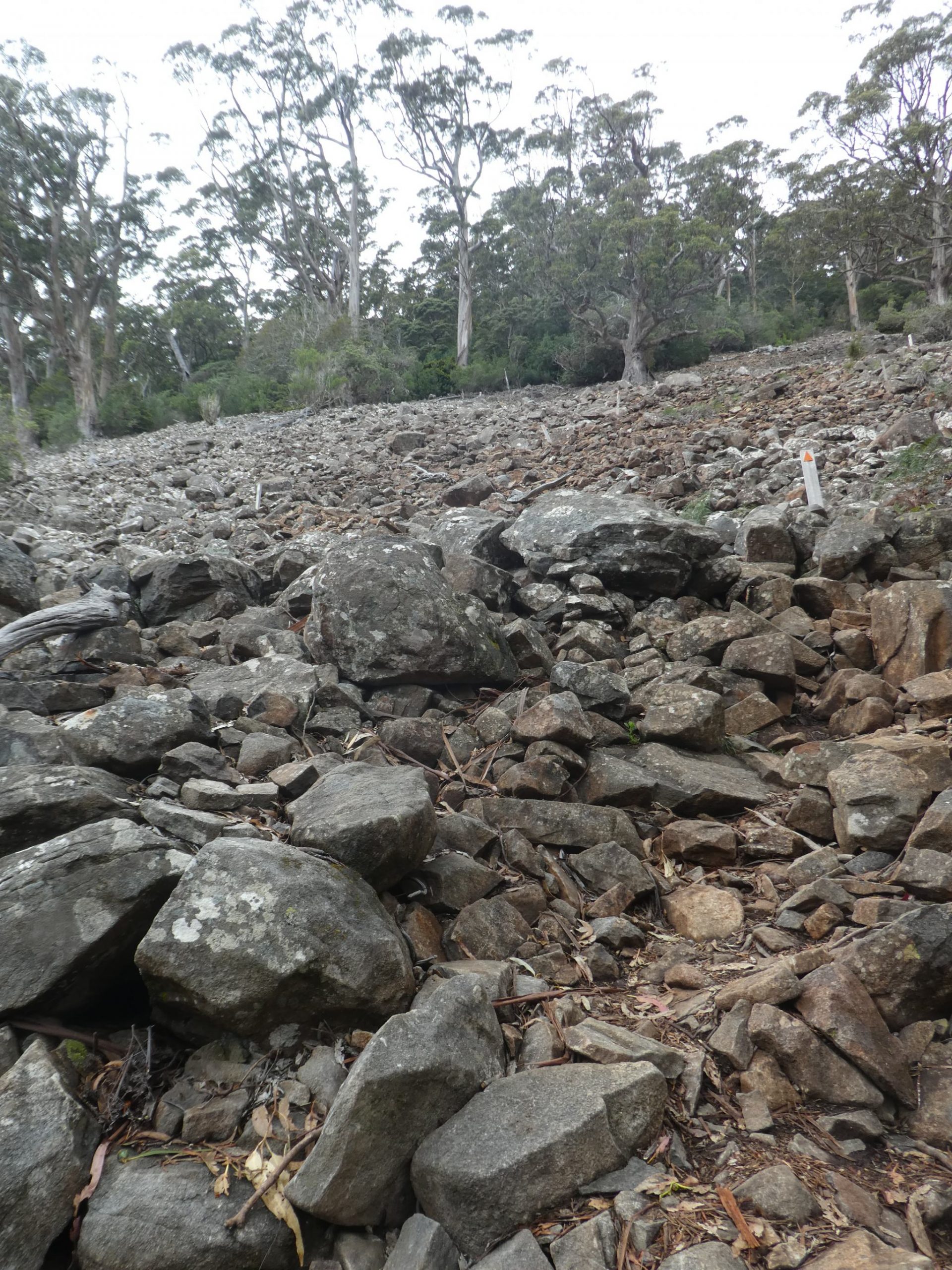 We made to about 20 metres from the top and the view was absolutely worth it. 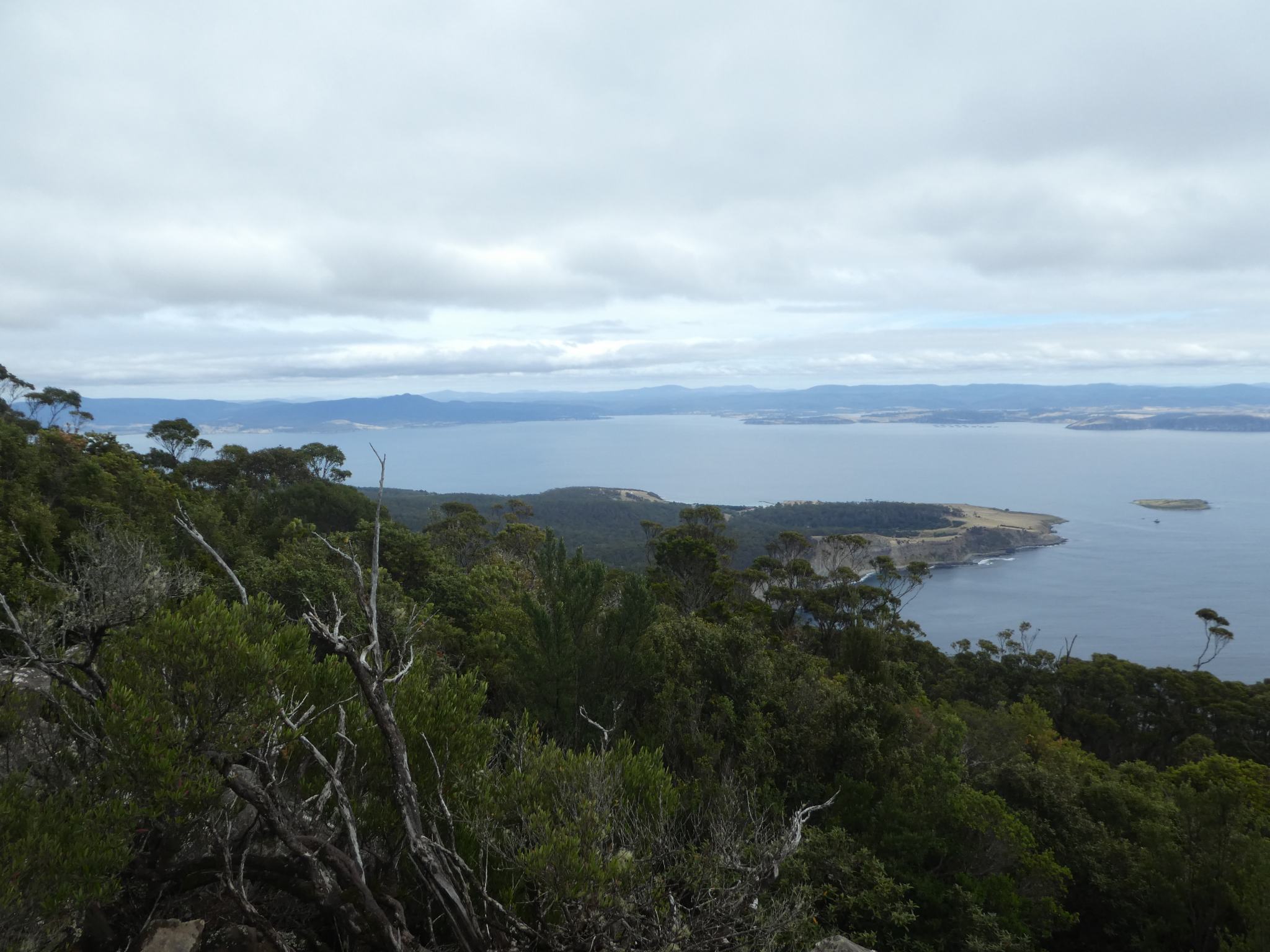 We’d timed our wanderings to end at the Painted Cliffs at low tide.  They were the highlight of the day.  These sandstone cliffs have been bleached dramatic shades of red and orange by ground water rich in iron seeping through the porous rock over millennia, with the sea carving out a series of jagged ledges.

The cliffs are only exposed two hours either side of low tide, and are best seen in the late afternoon sun.   Brilliant! 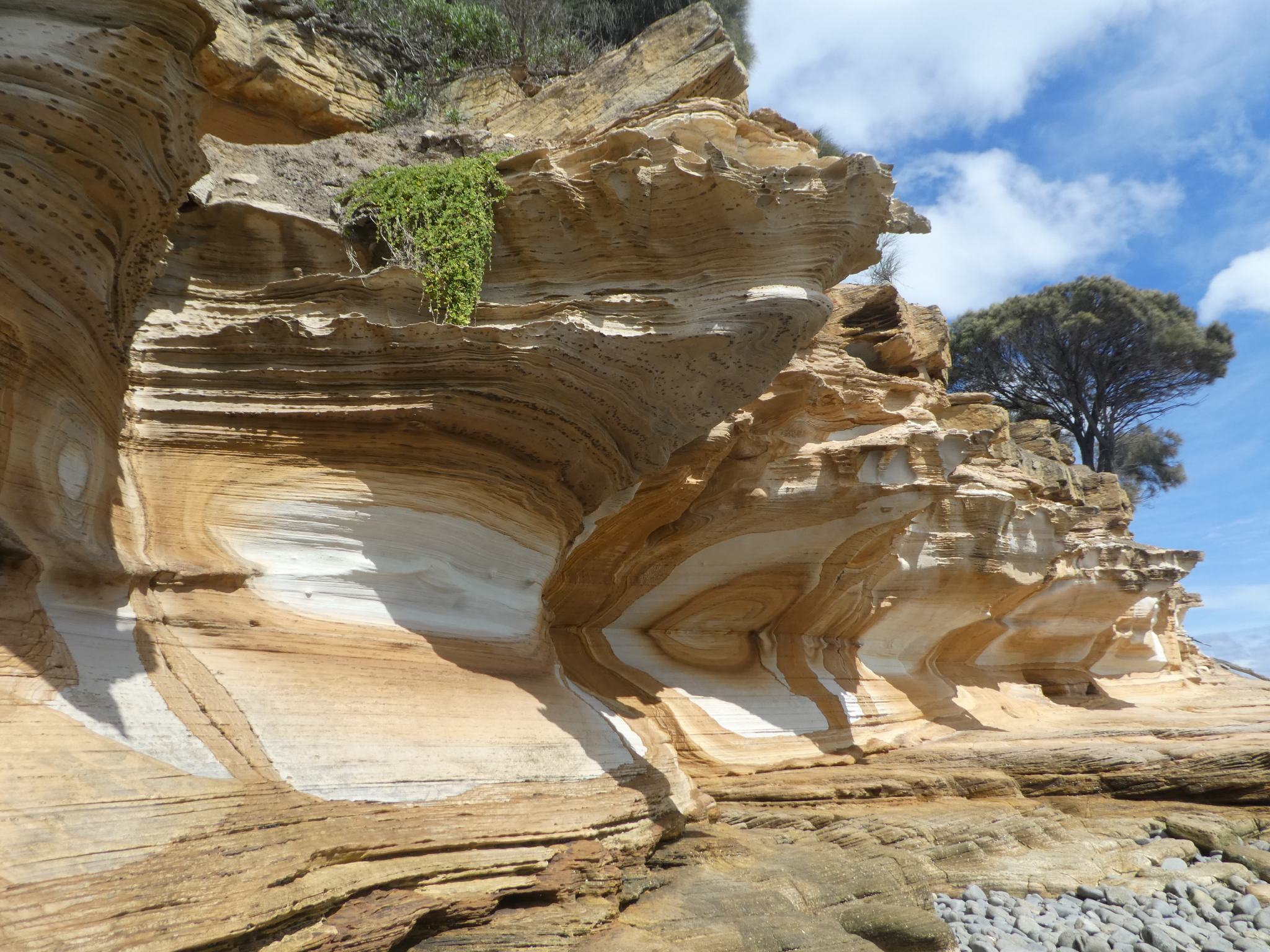 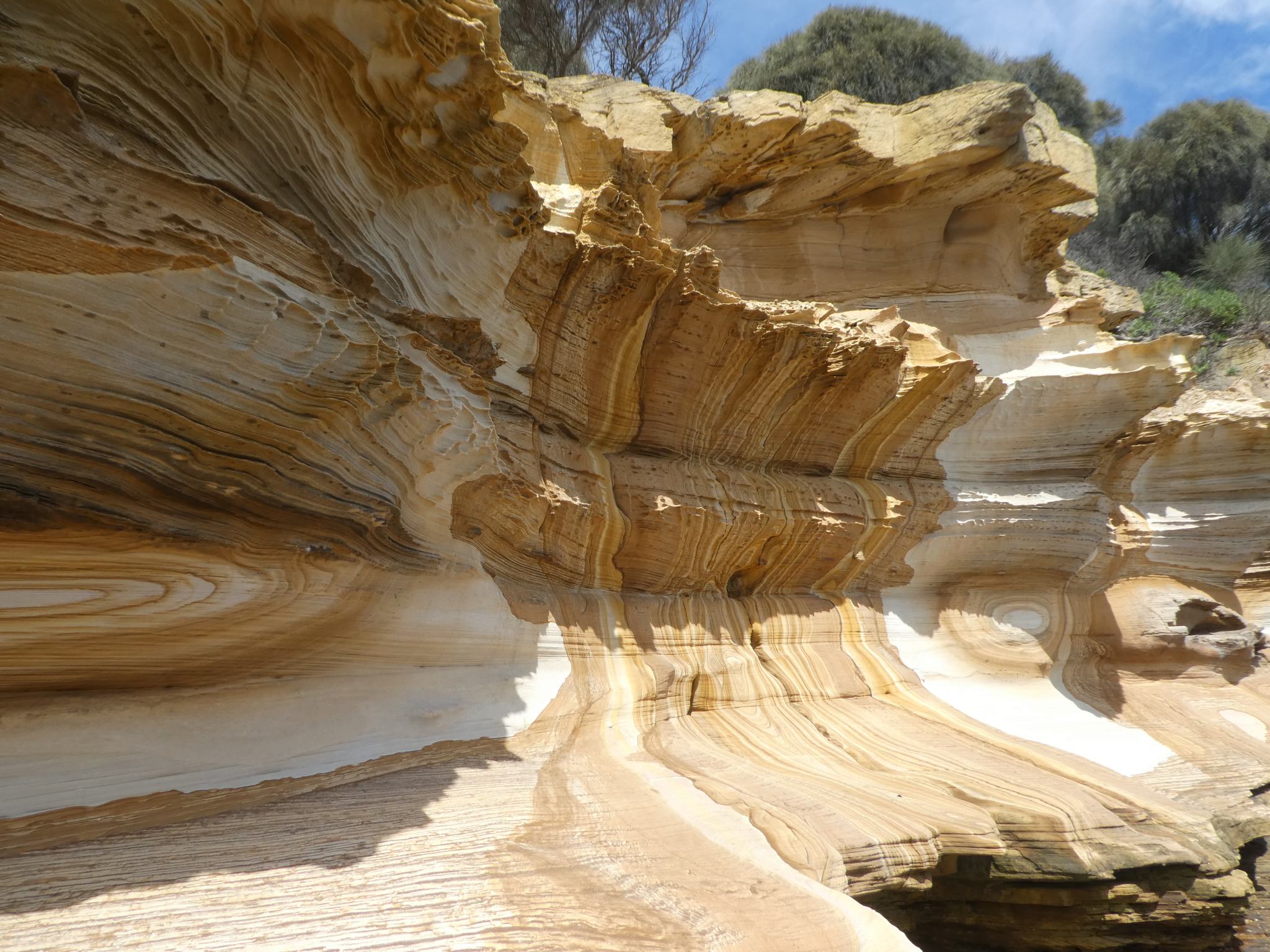 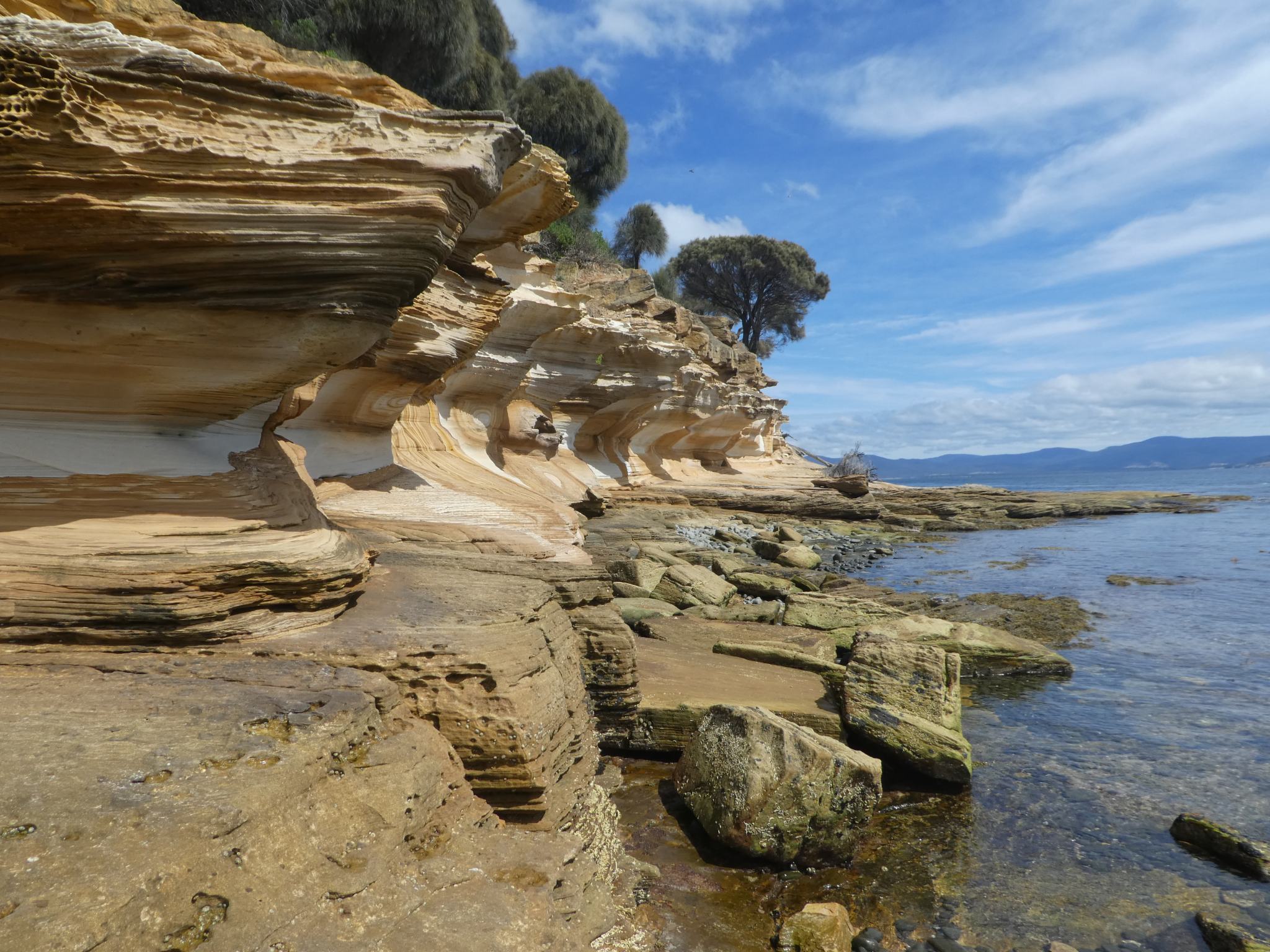 Then back on the ferry to Triabunna to finish the day with fish and chips from the locally famous Fish Van strategically located in the ferry car park.