The Tasman Peninsula has some fabulous hiking.  The towering sea cliffs have long attracted walkers, with more and more coming each year since the opening of the Three Capes Track in December 2015.   The three capes in the name are Capes Hauy, Pillar and Raoul, although confusingly, the 48km walk involves walking only to Cape Huay and Cape Pillar.  Cape Raoul is a view in the distance, seen but not walked.

This spectacular 9.5km ‘out and back’ walk over part of the Three Capes Track starts at picturesque Fortescue Bay.  Here’s a view looking back to the bay from the point where the track begins to climb. 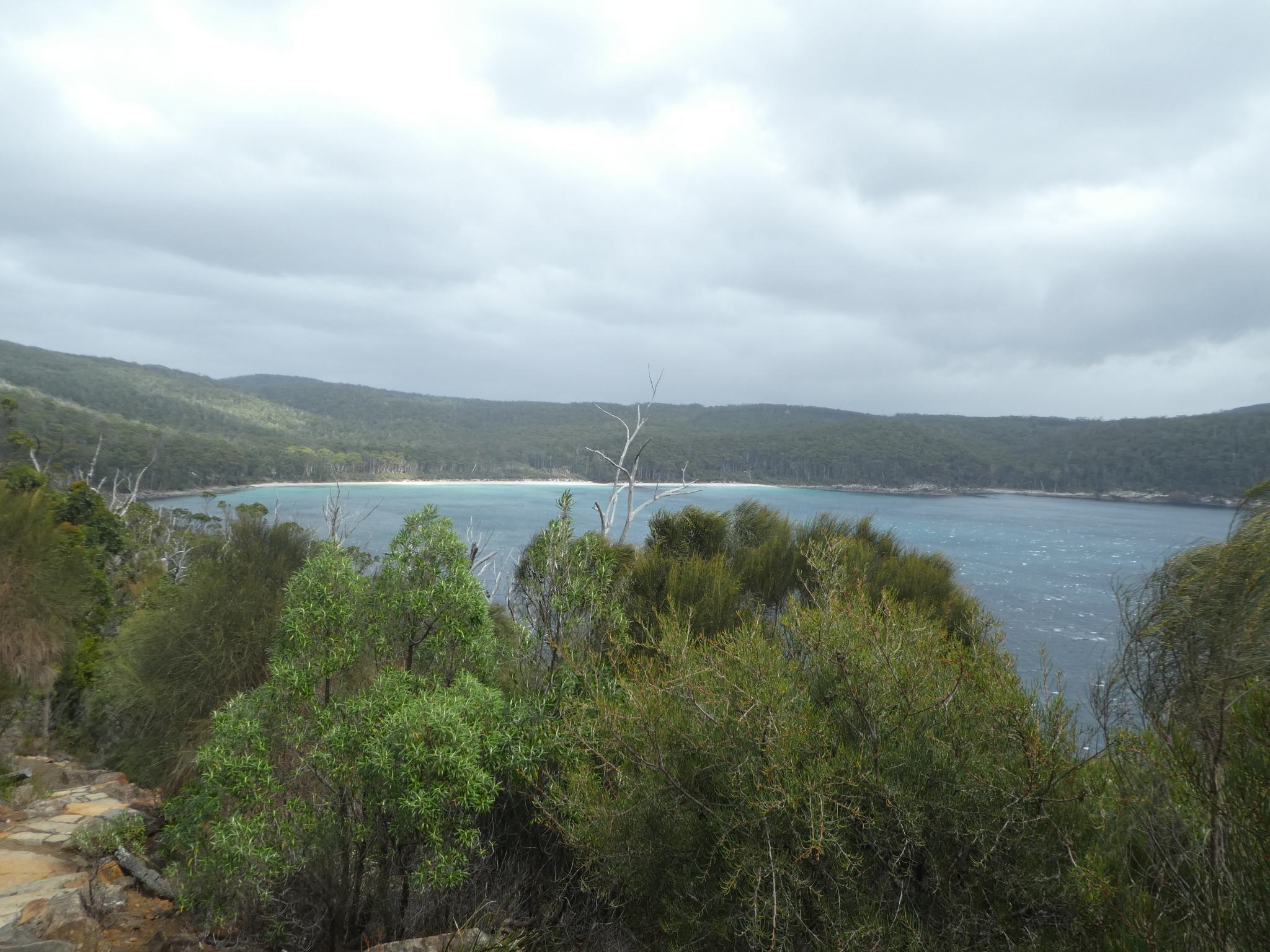 We were lucky enough to spot a local having breakfast. 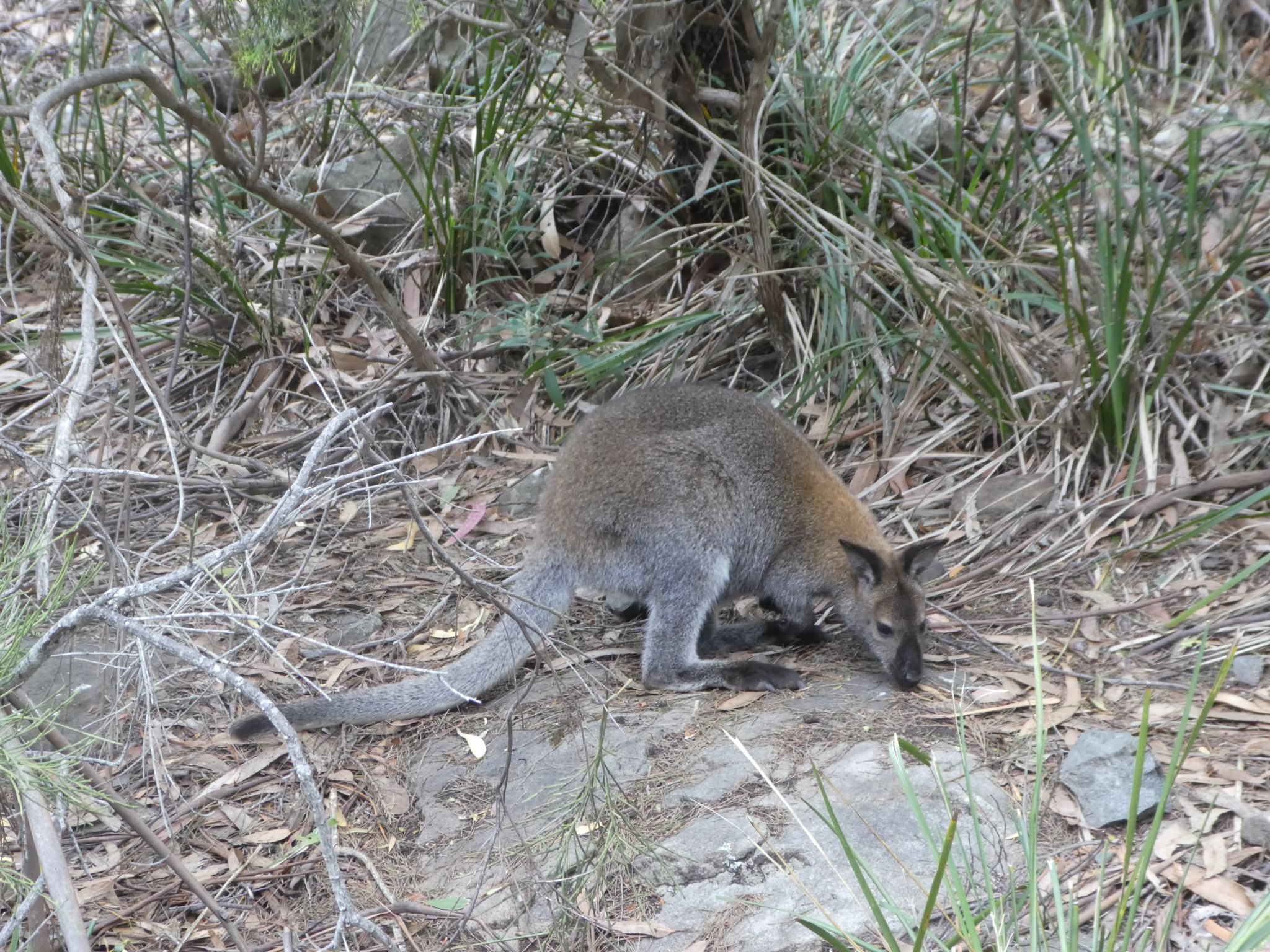 The track initially climbs through low trees and heath.  Not too taxing, and when you reach the top, there’s a lovely view out to the cape. 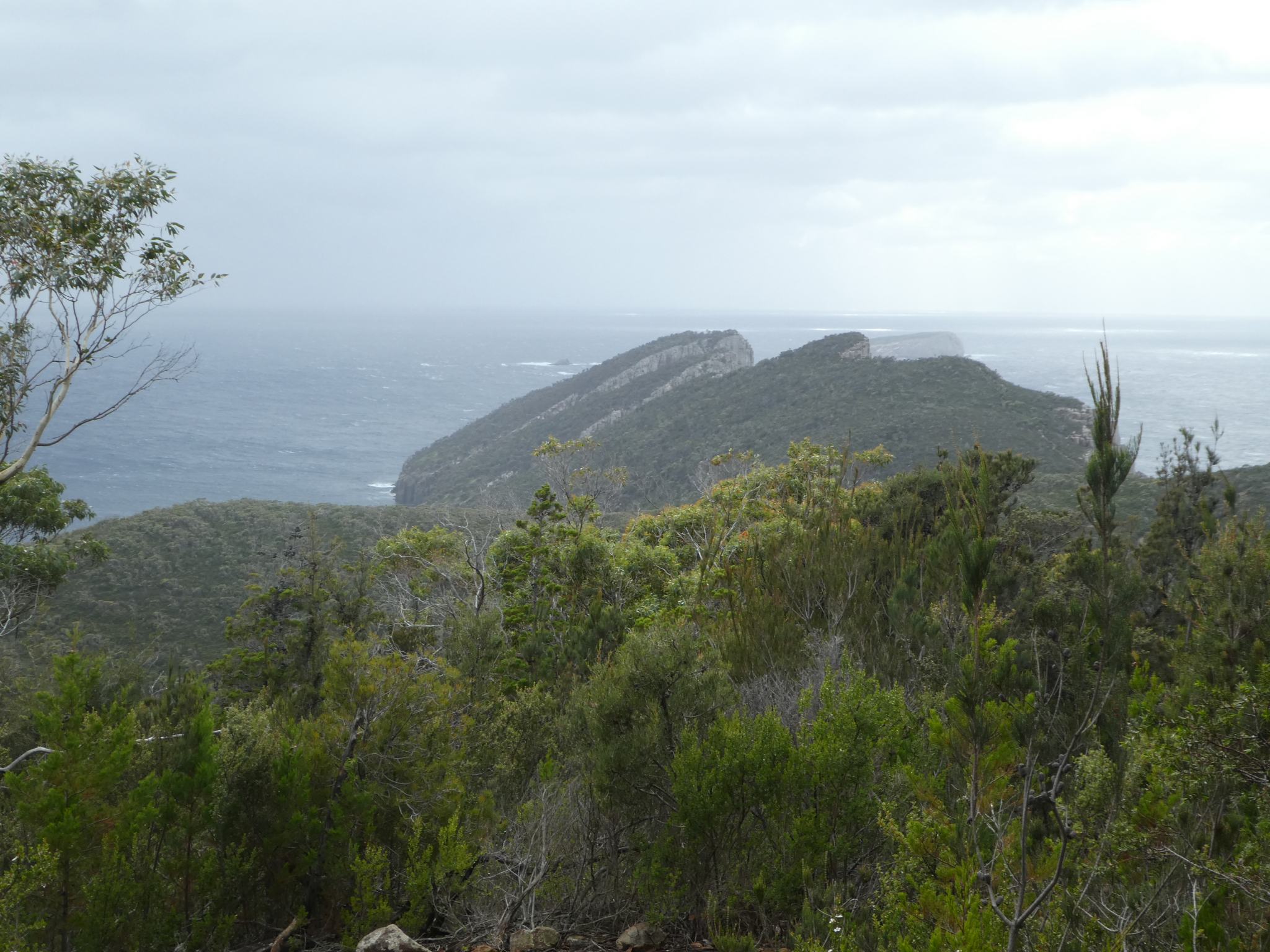 From here, it looks like it will be a pleasant stroll across the top to the end.  How wrong that is.  Not far past this point, steps start heading down. 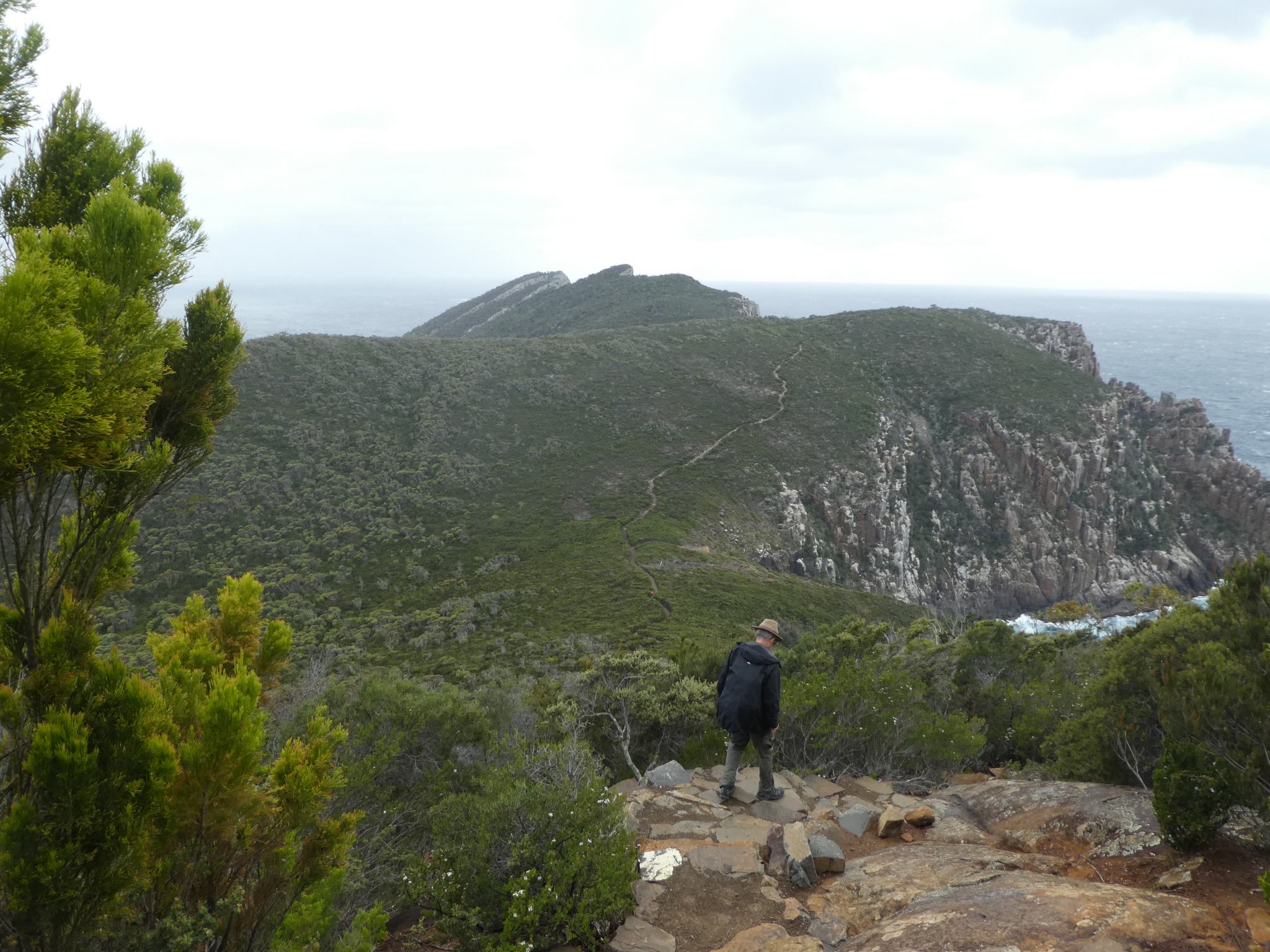 The climb was not so bad, but once on the other side, the wind was gusting 50kph and on the exposed sections, just not being blown off the track was a challenge at times.  But once at the end of the cape, the 200 degree view of the churning sea and the dolerite columns that make up this coastline was a wild sight. 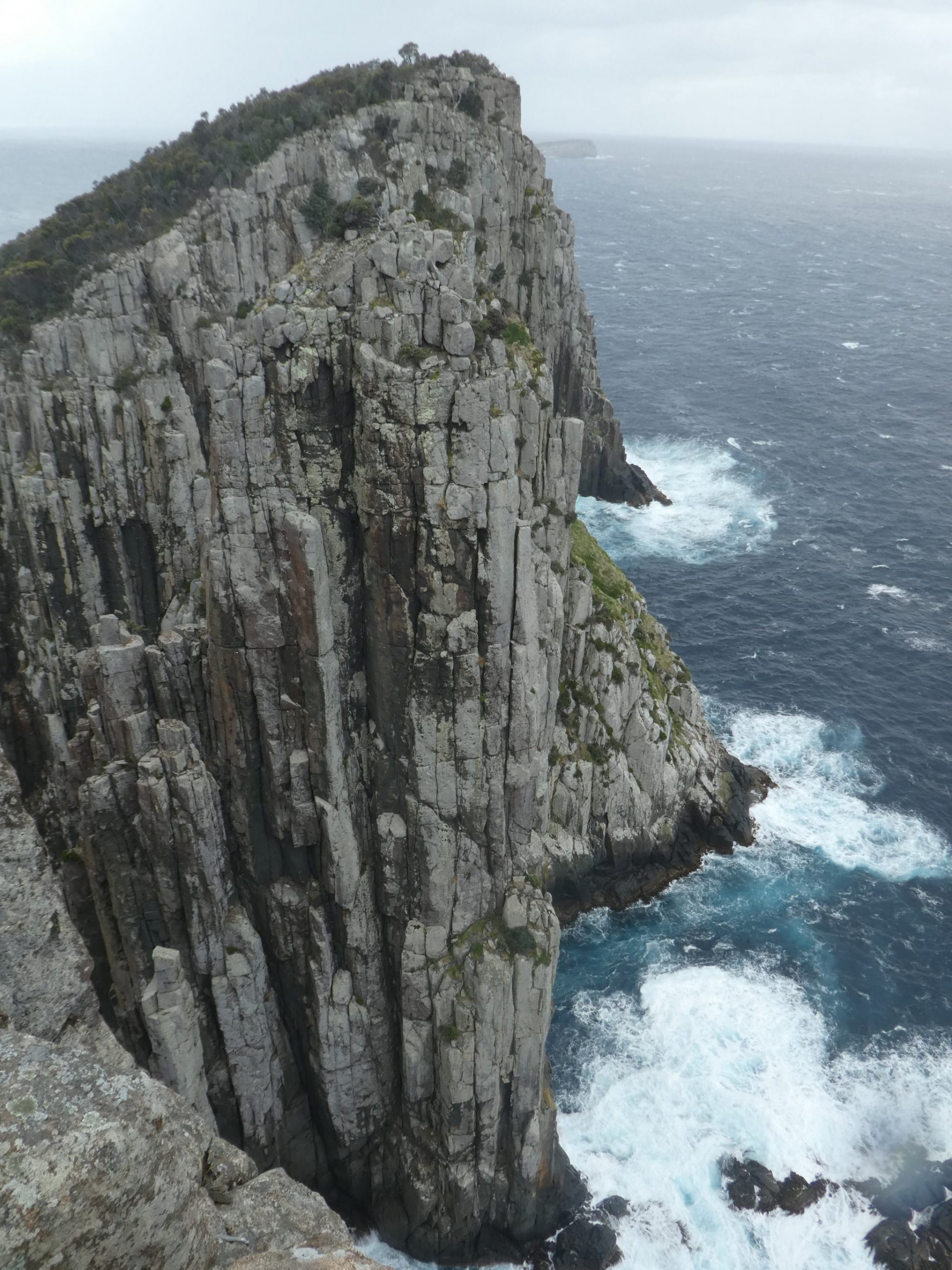 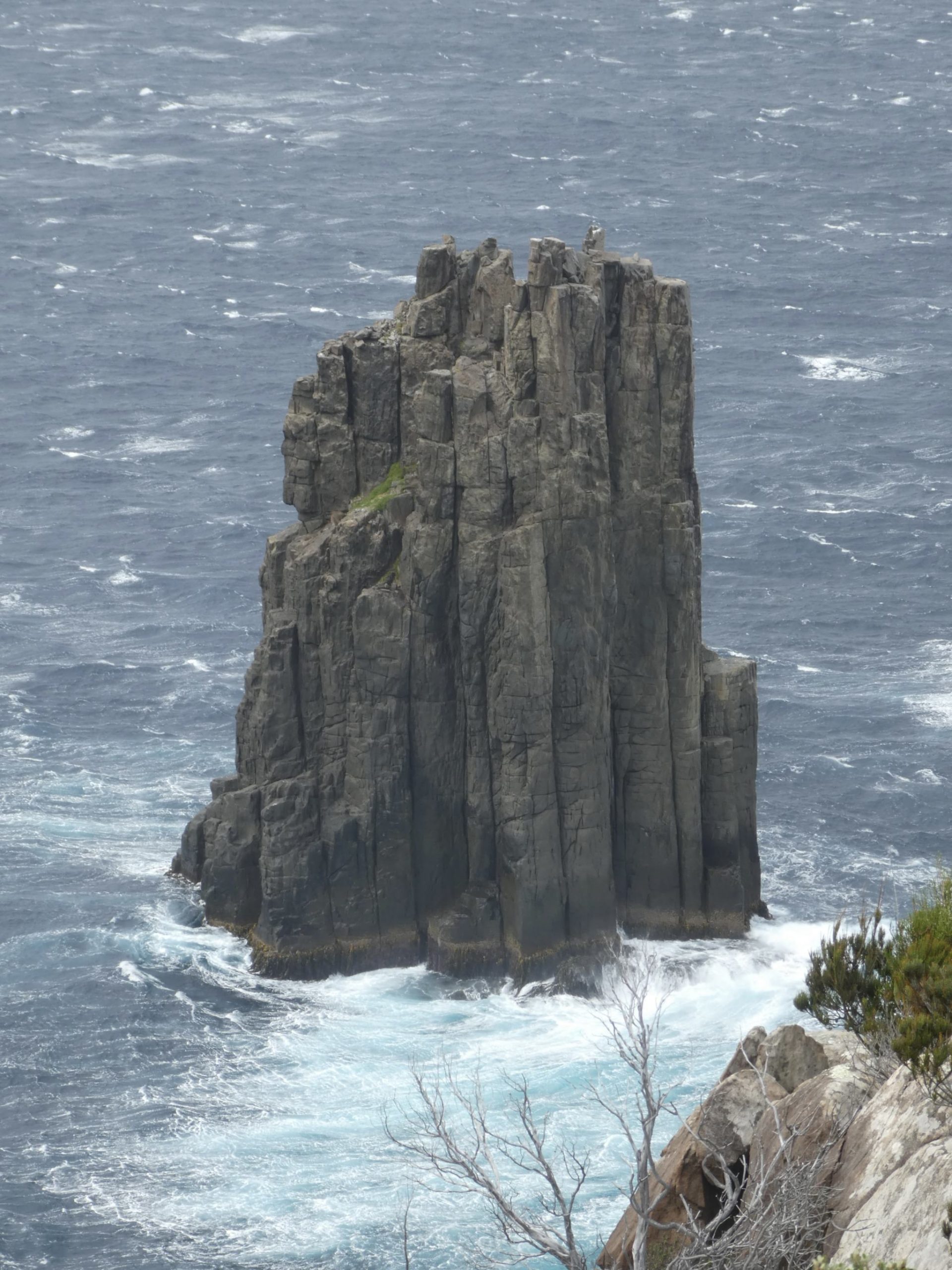 The sea stacks along this coast are a magnet for rock climbers.  At the tip of Cape Huay, the Totem Pole and the Candlestick are famous, attracting brave – aka totally insane! – climbers from all over the world.

The Totem Pole is the skinny freestanding column in the photo below.  It is 65 metres tall and just 4 metres wide at sea level.  The Candlestick is the 110 metre collection of columns jutting out behind it which looks like part of the cliff from this angle but is actually another freestanding formation.  Graded 25 and 20 respectively on a difficulty scale of 1 to 35, these are strictly for experienced climbers only.  Given the wind gusts that day, it wasn’t surprising there were no climbers about. 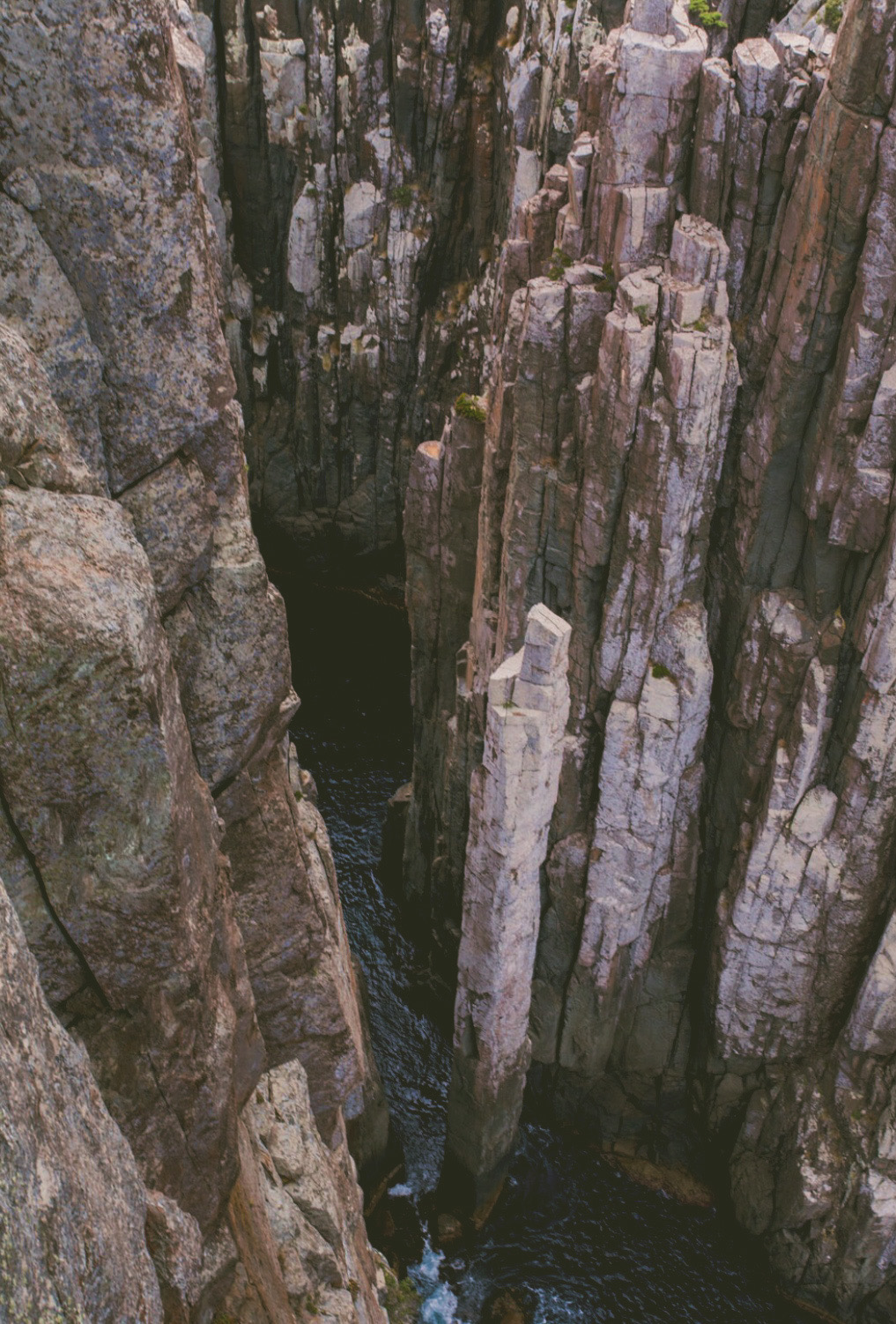 Looking south, the cliffs are equally stunning.  The only disappointment was that the cloudy weather meant the view to Cape Pillar was not so clear. 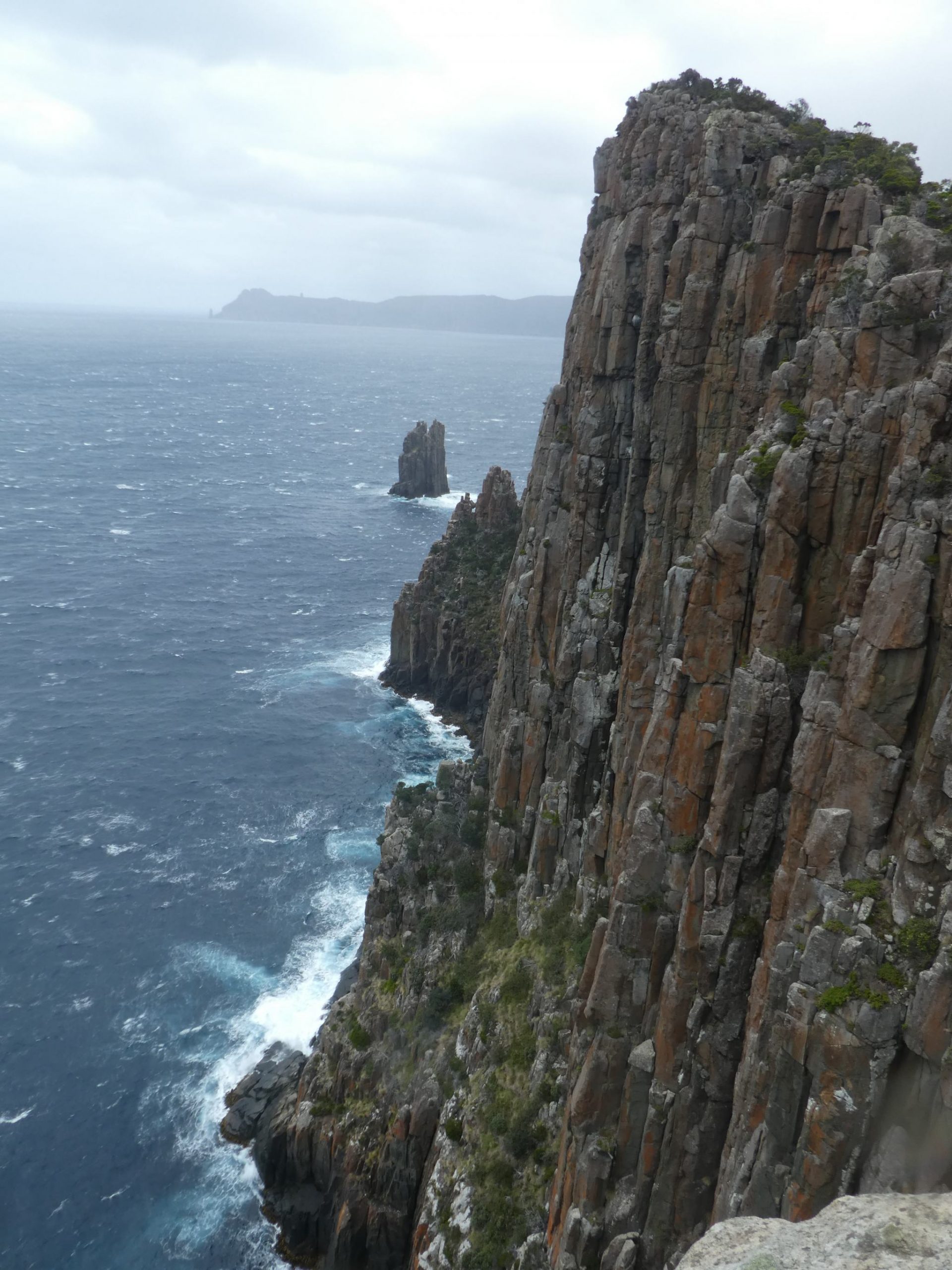 Next day we headed out to walk to Cape Raoul and Shipstern Bluff.

Cape Raoul is the promontory at the southernmost tip of the Tasman Peninsula.  Quite literally, head directly south from here and the next land mass you reach will be Antarctica.

The hike begins at the end of Stormlea Road on the southern end of the Tasman Peninsula.  The track has been substantially upgraded in recent years.  It’s very easy to follow and comments on some reviews which refer to broken bridges and having to use fallen logs to cross creeks are out of date.

From the car park, it’s a gentle uphill climb for about 30 minutes until the track splits.  The track to the right goes to Shipstern Bluff, and to the left is Cape Raoul.  It’s clearly signposted.

Not too much further up and suddenly you reach a viewpoint.  There are panoramic views to the cape in one direction. 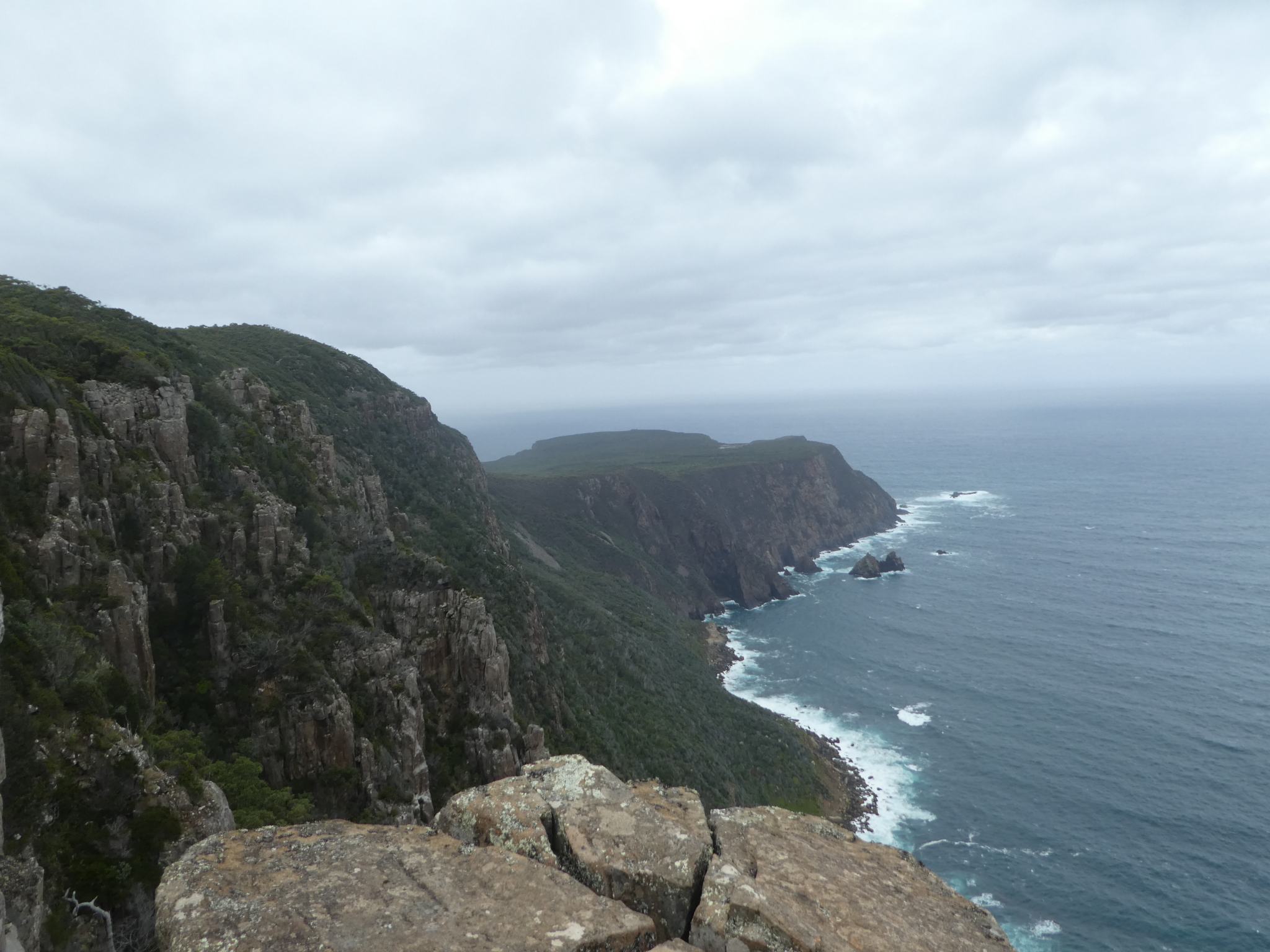 And toward Shipstern Bluff in the other. 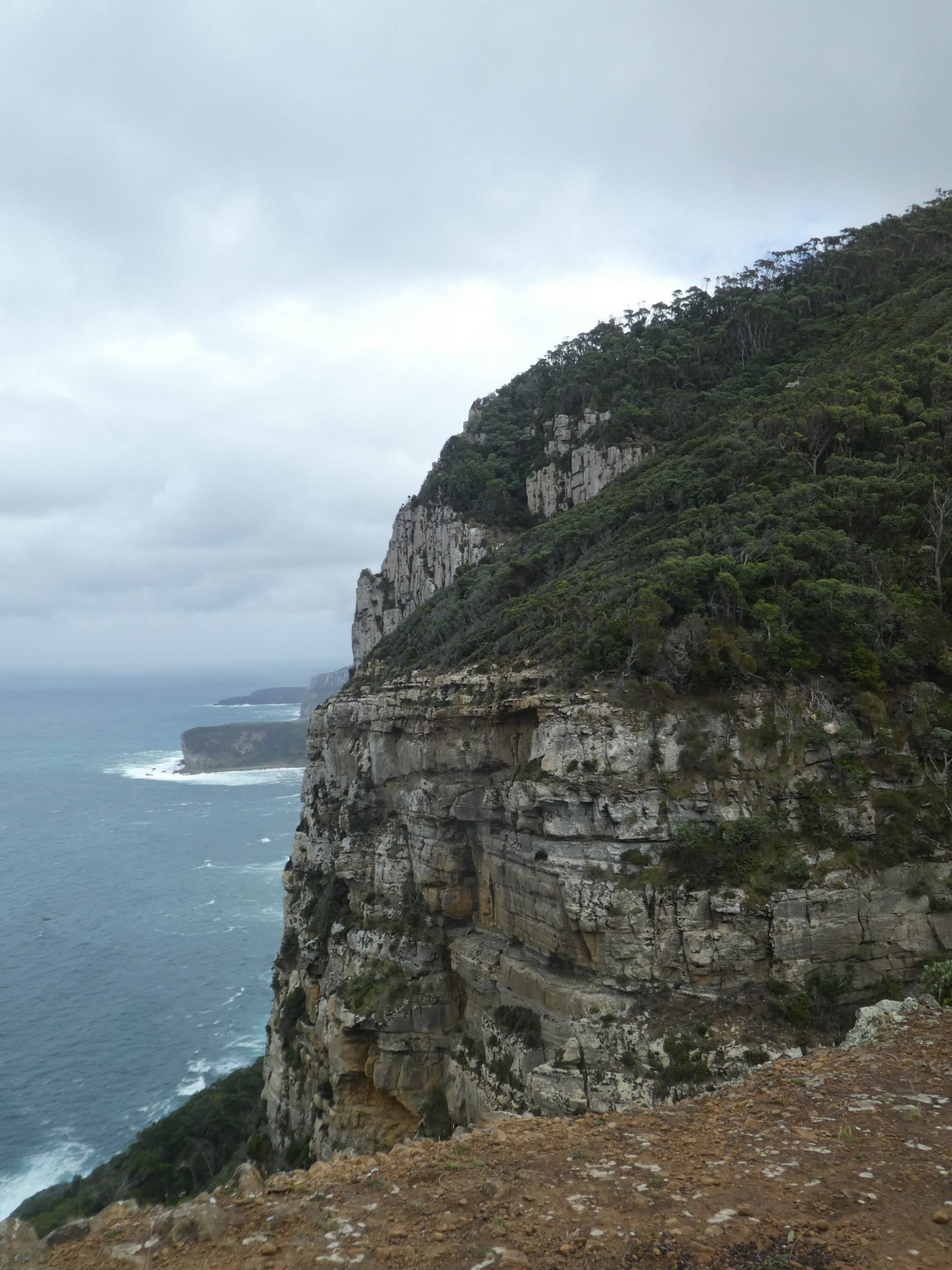 Some say this is the best view on the track, but we disagree.  It’s definitely worth continuing on to the end.

From the viewpoint, the track follows the top of the cliff for a short while.  Quite close to the edge in fact. 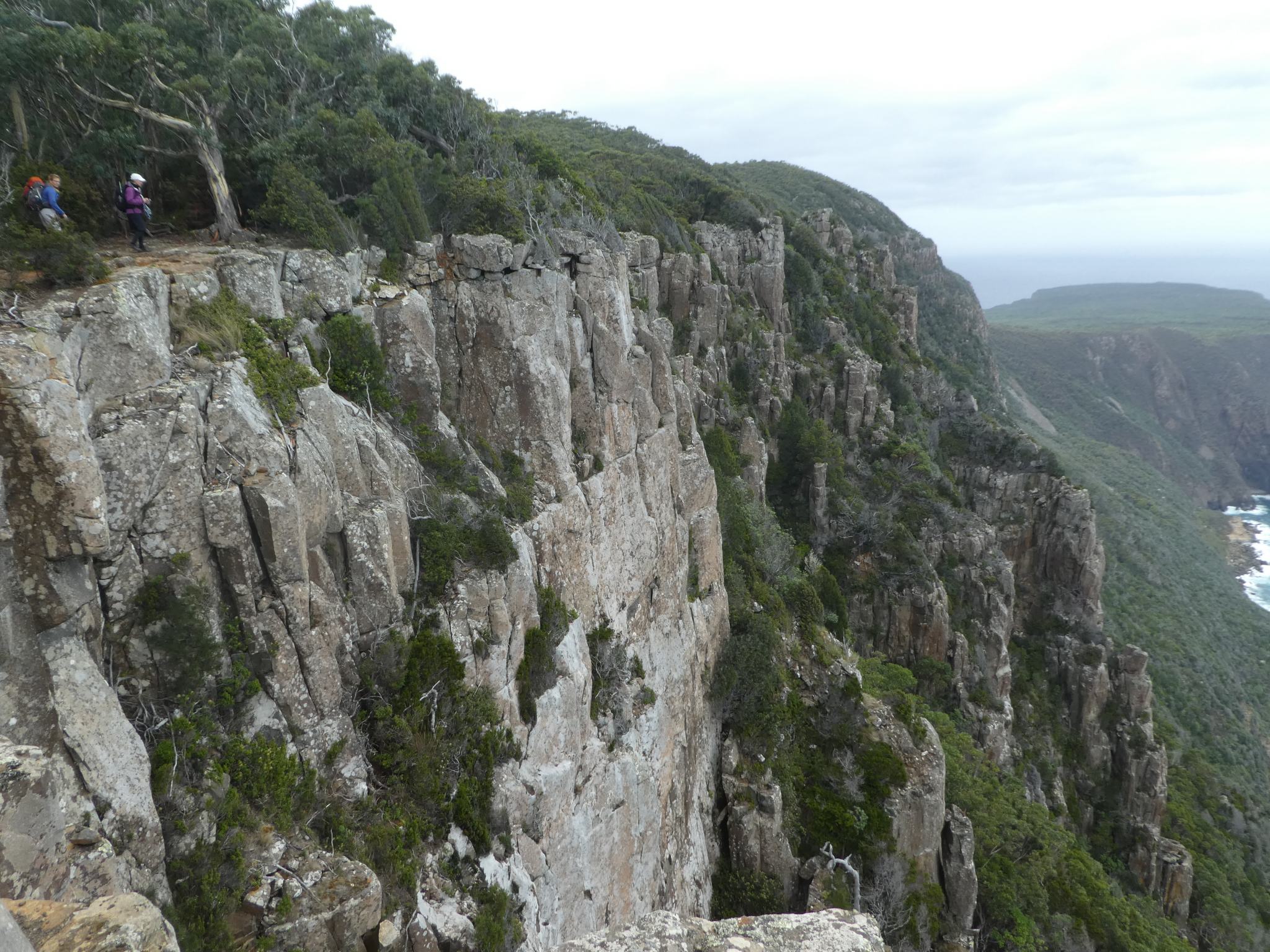 After ducking back into the bush land, the track heads steadily down and then back up again.  Not as big a drop as on Cape Huay, though.  There are more great views along the way. 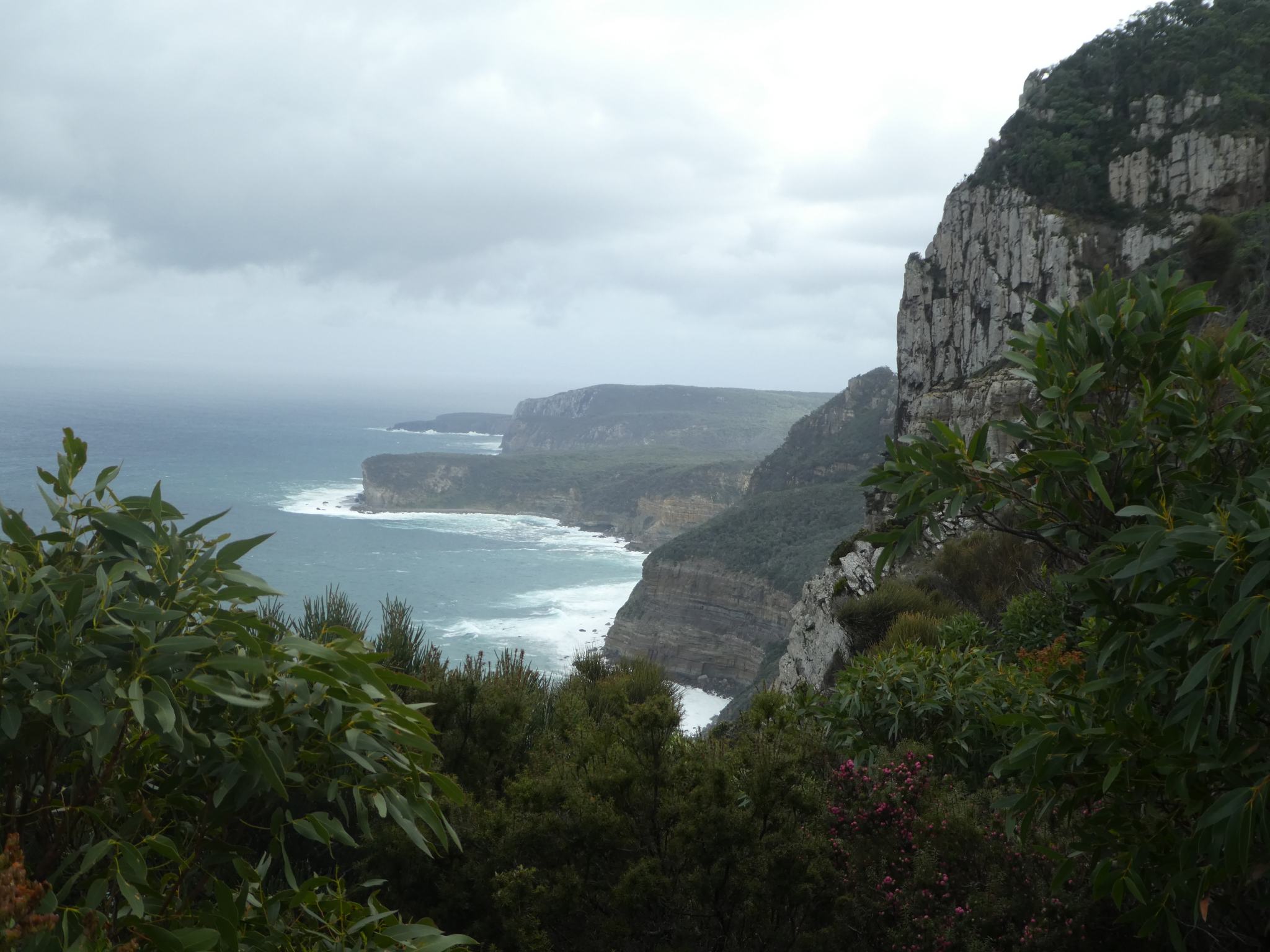 At the top of the climb, a plateau spreads out in front of you and the landscape changes quite suddenly into coastal heath only about mid calf high.  We spent quite a while watching this little fellow rooting through the undergrowth for food. 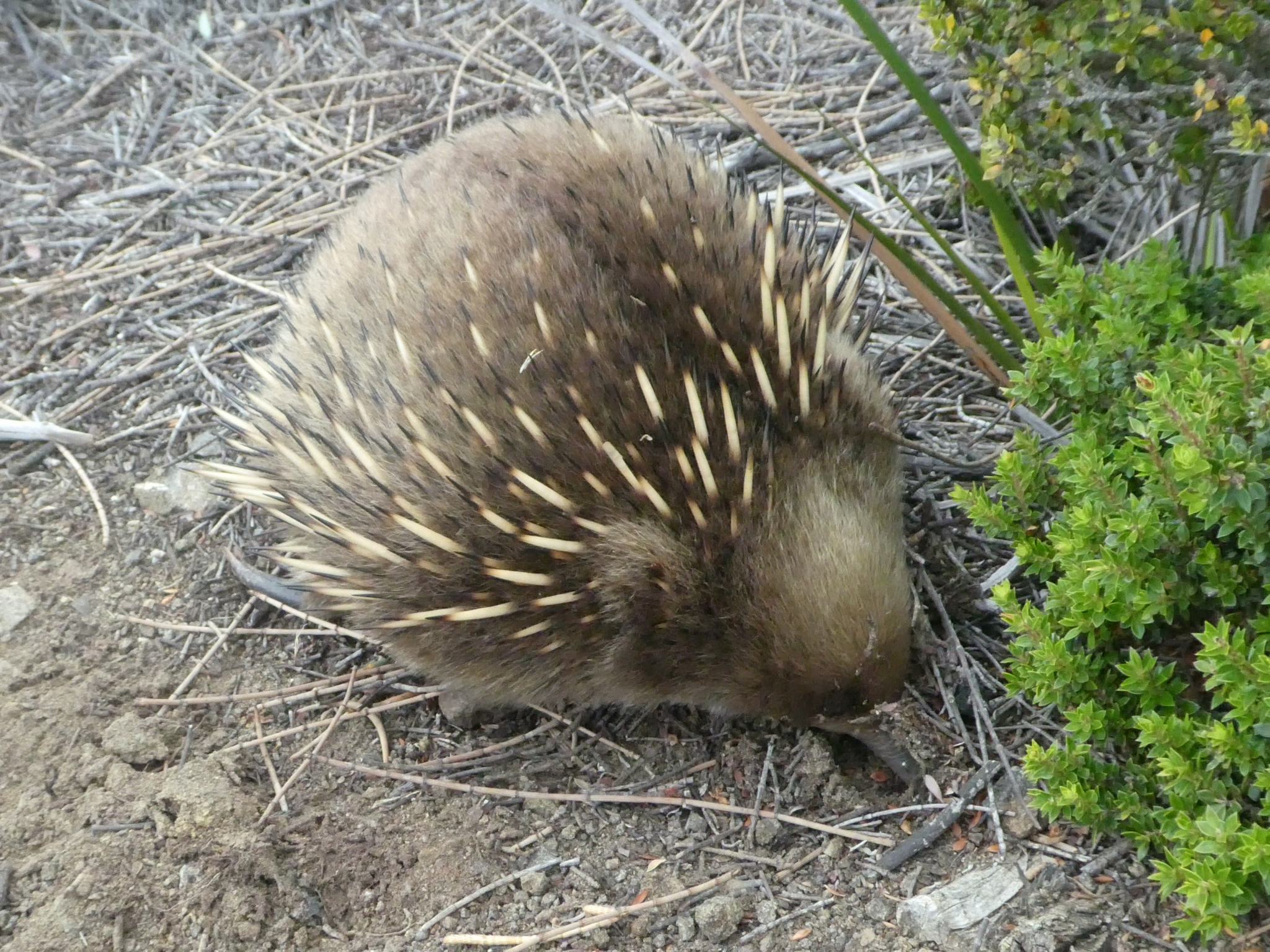 A significant part of the last section of track is now boardwalk.  Some walkers oppose boardwalks on the basis that they are ‘unnatural’ or a visual scar on the landscape.  BUT, they do eliminate the damage to sensitive flora caused by walkers making their own paths across the plateau, and degradation caused by walking in wet conditions.  We’ve all had the underwhelming experience of tramping through a mud bog caused by too many boots traversing fragile ground.

The boardwalks also make it easy to follow the track right to the end.  In the past some walkers have complained that they thought they’d reached the end only to discover later that there’s more they missed.

There are two view points at the end, each with spectacular views of what are amongst the tallest sea stacks in Australia.  Some are more than 300 metres high. 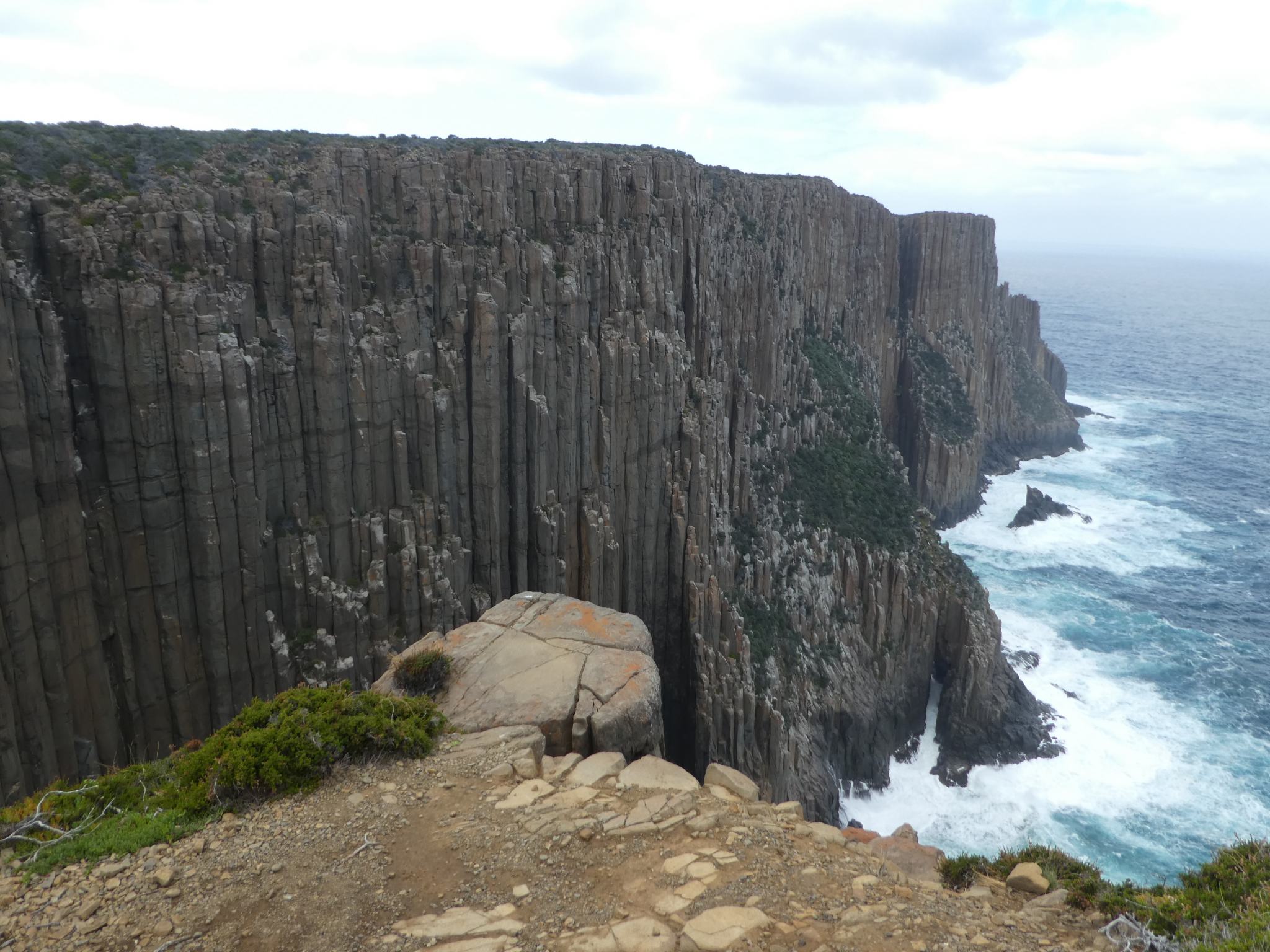 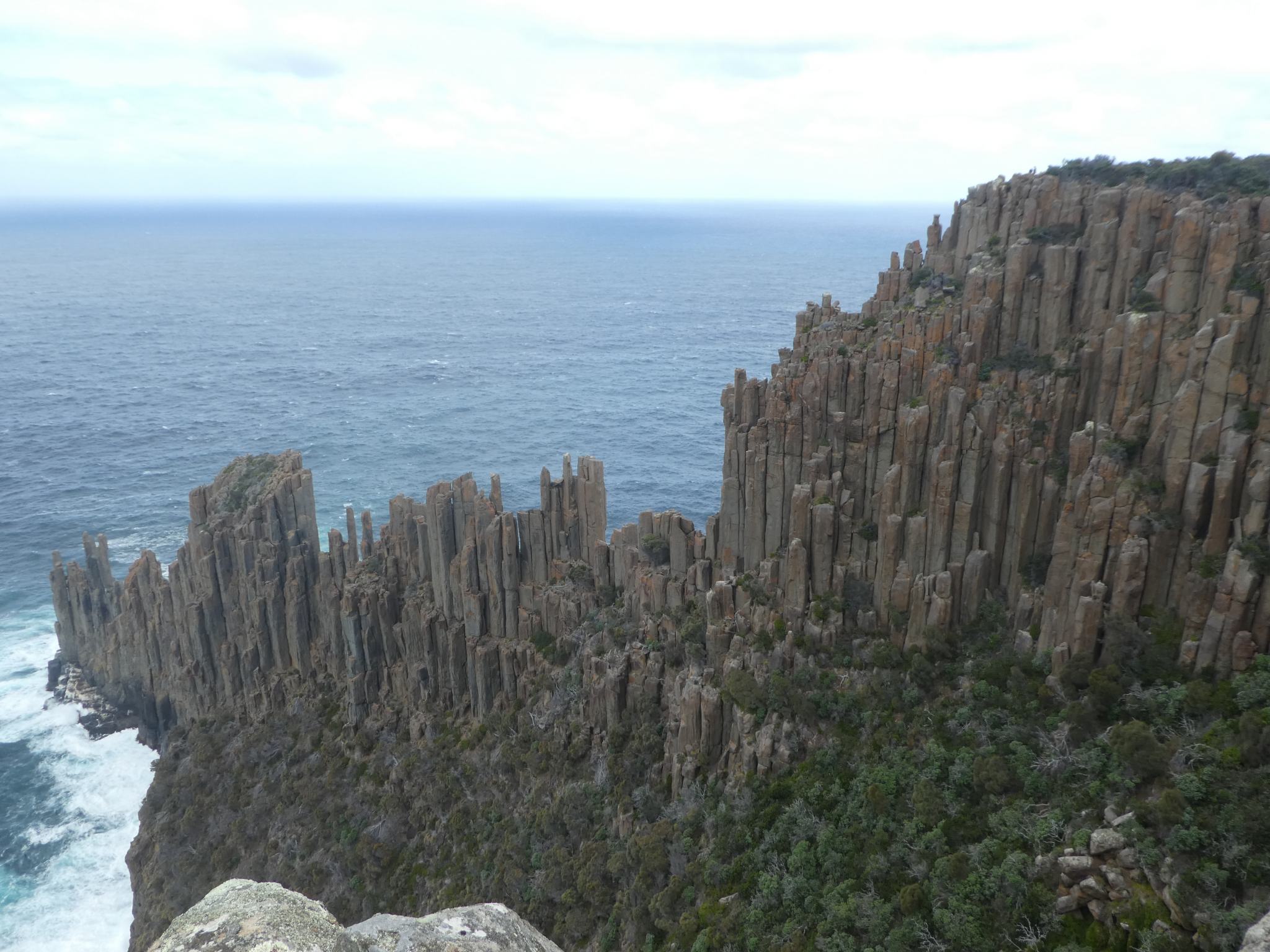 The track is an ‘out and back’ so it’s then a return walk almost to the beginning, to the turn off to Shipstern Bluff.

Shipstern Bluff is world famous in the surfing community.  Jet skis tow intrepid surfers out to ride the up-to 9 metre waves which surge onto this fabulously wild coast.

From where it splits from the Cape Raoul trail it’s less than 3km walk to the bluff lookout. 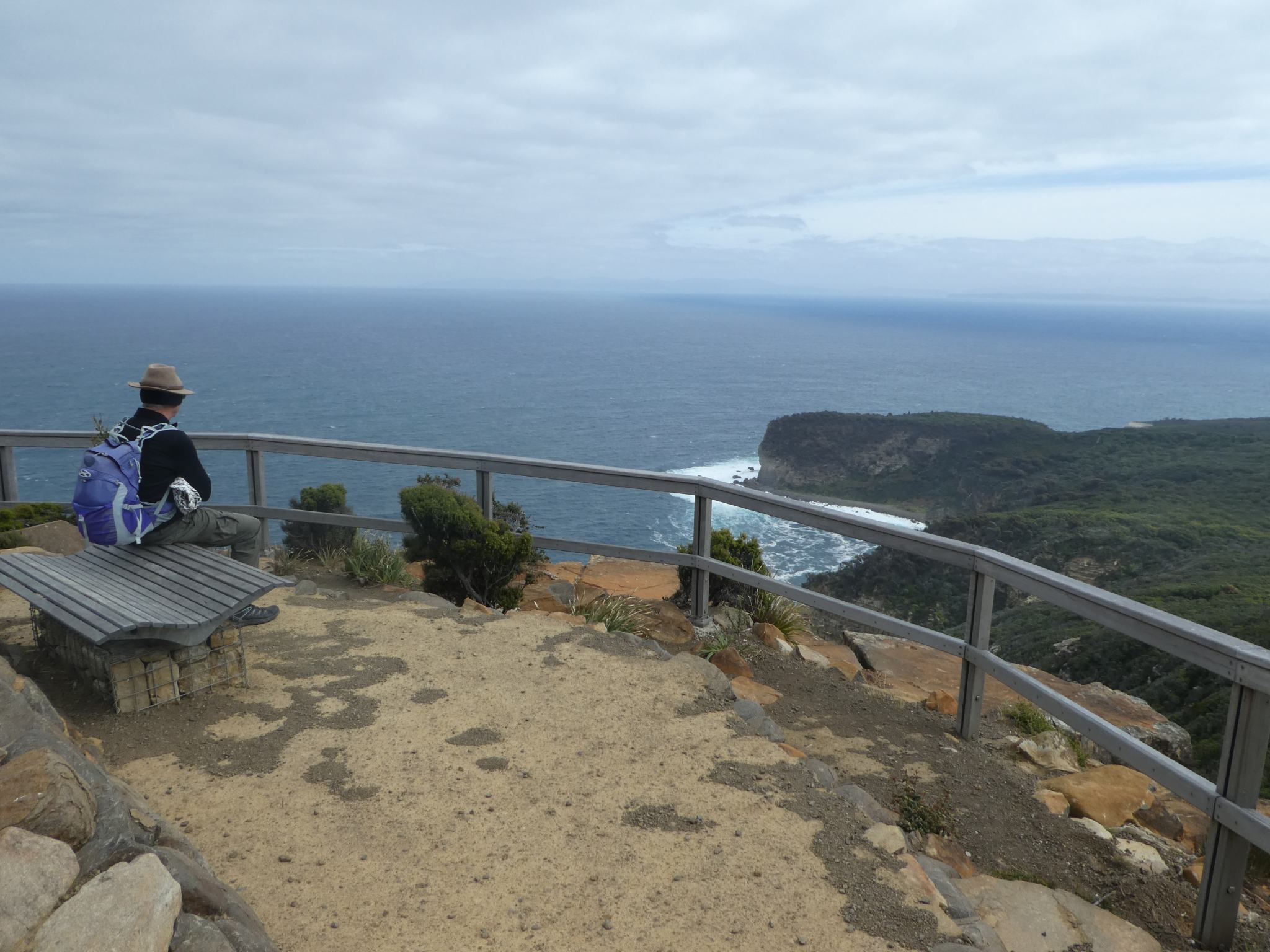 It is possible to continue walking all the way down to the beach, but the more interesting view is from above, and it’s a three hour return walk.  We would not have made it in daylight, and including the return to the car park our total walk was 21km, enough for one day.  A gin tasting at McHenry’s, a local distillery was beckoning.  We would highly recommend the Federation Gin.

On our final day on the peninsula we did a short walk to see some of the ‘big ticket’ sights conveniently located close together just past Doo Town.

Tasman’s Arch is the remnant of the roof of a sea cave which has been eroded by wave action since the cliff was exposed about 6,000 thousand years following the end of the last ice age.  Erosion first caused a tunnel into the cliff, and eventually part of the roof collapsed, creating an arch. 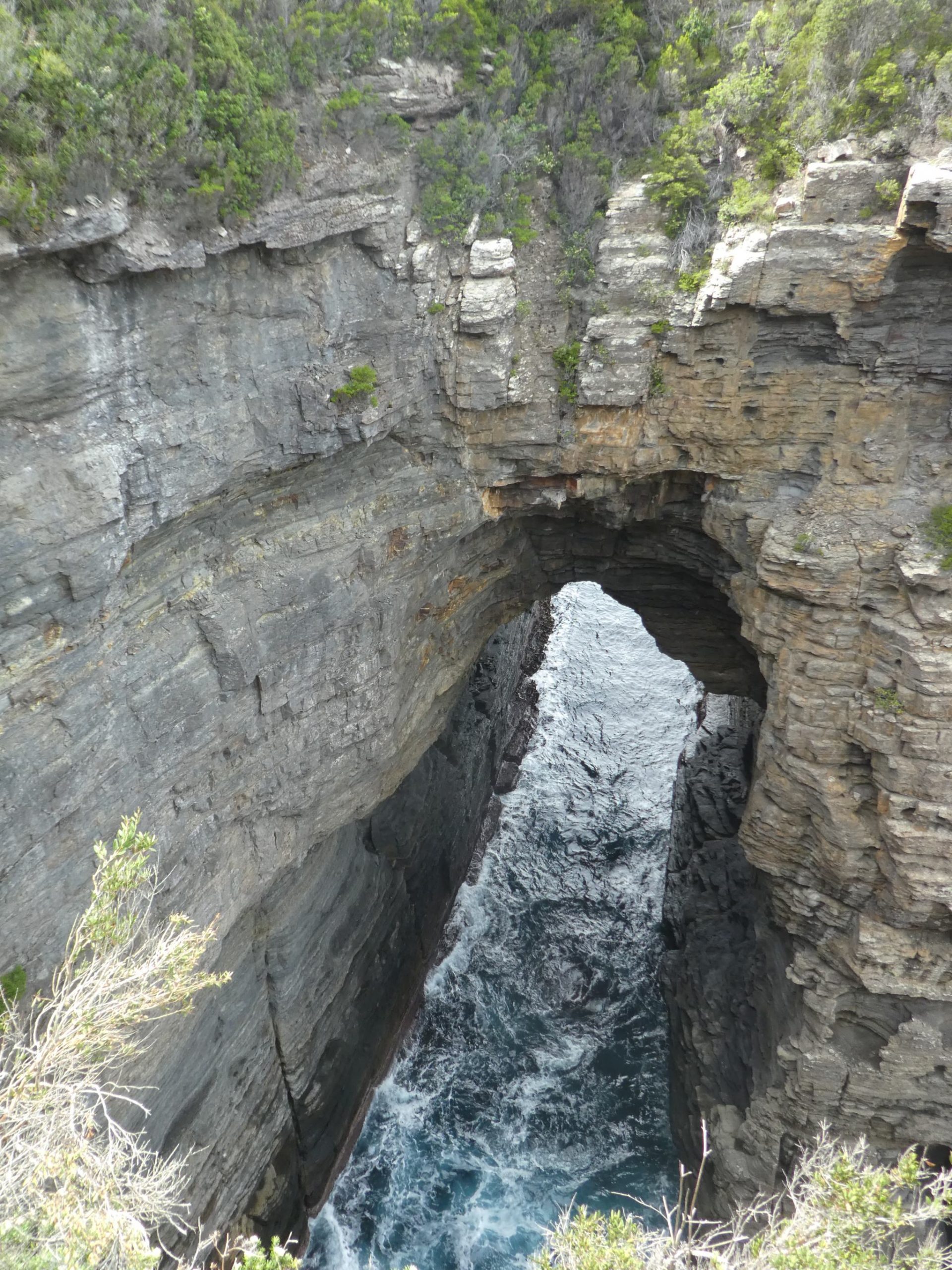 A somewhat underwhelming feature known as the Devil’s Kitchen is about 150 metres away.  It’s essentially a cleft in the cliff, caused by a similar process of erosion, but missing the archway.

From Tasman’s Arch it’s a flat, leisurely walk to Waterfall Bay, with some great views down the coast toward Cape Hauy. 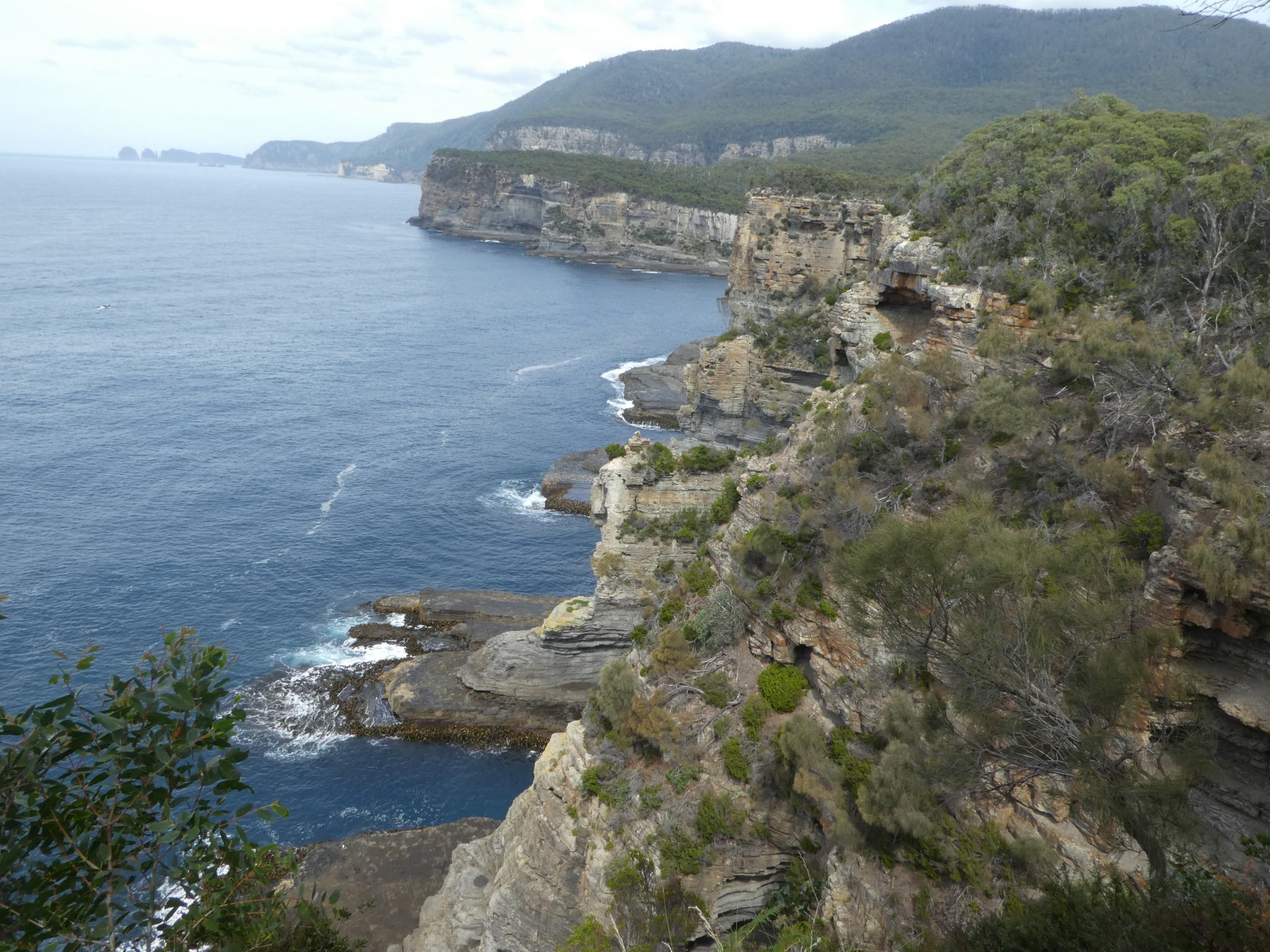 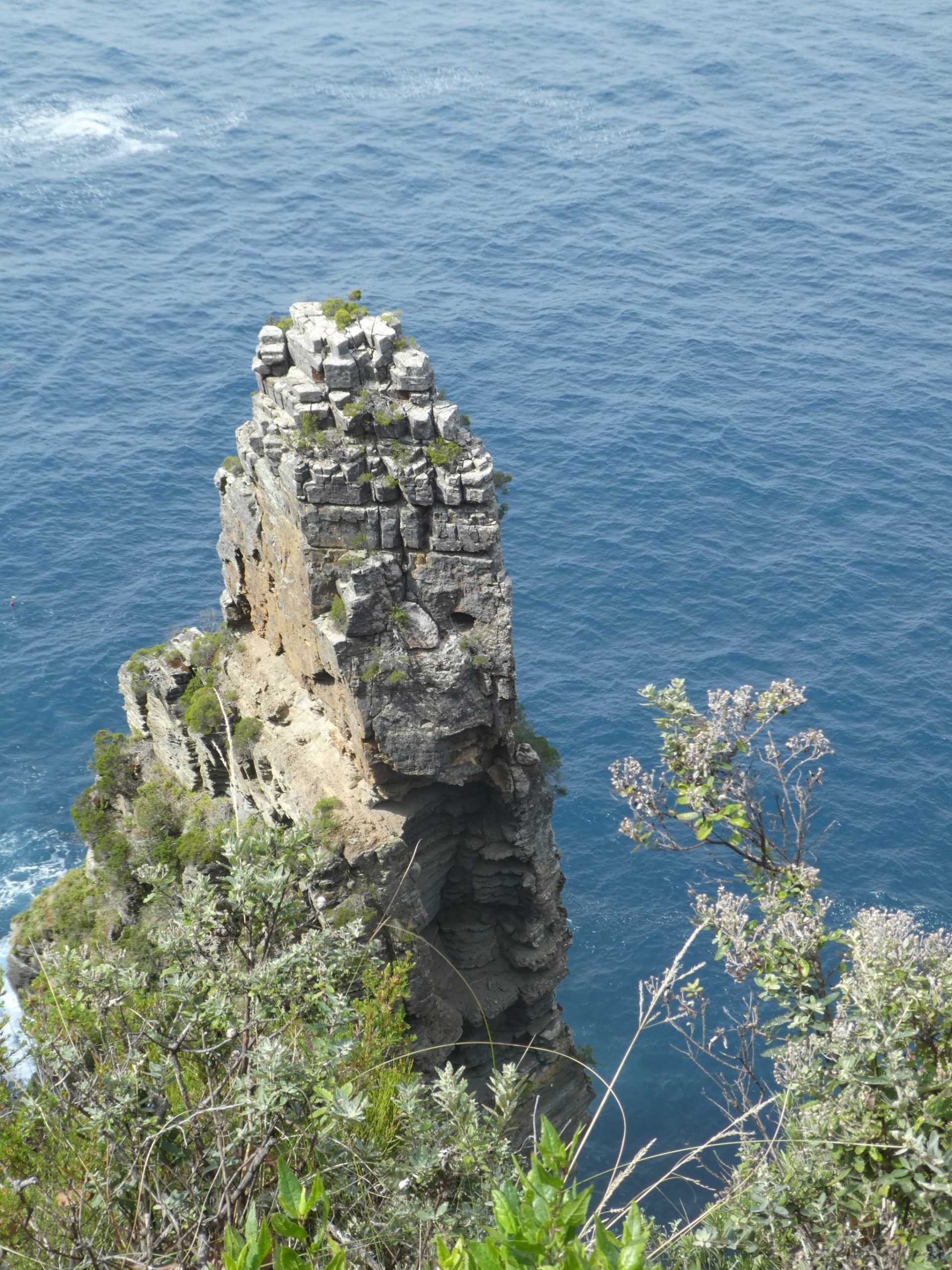 From here you can see the Candlestick and the top of the Totem Pole in full profile. 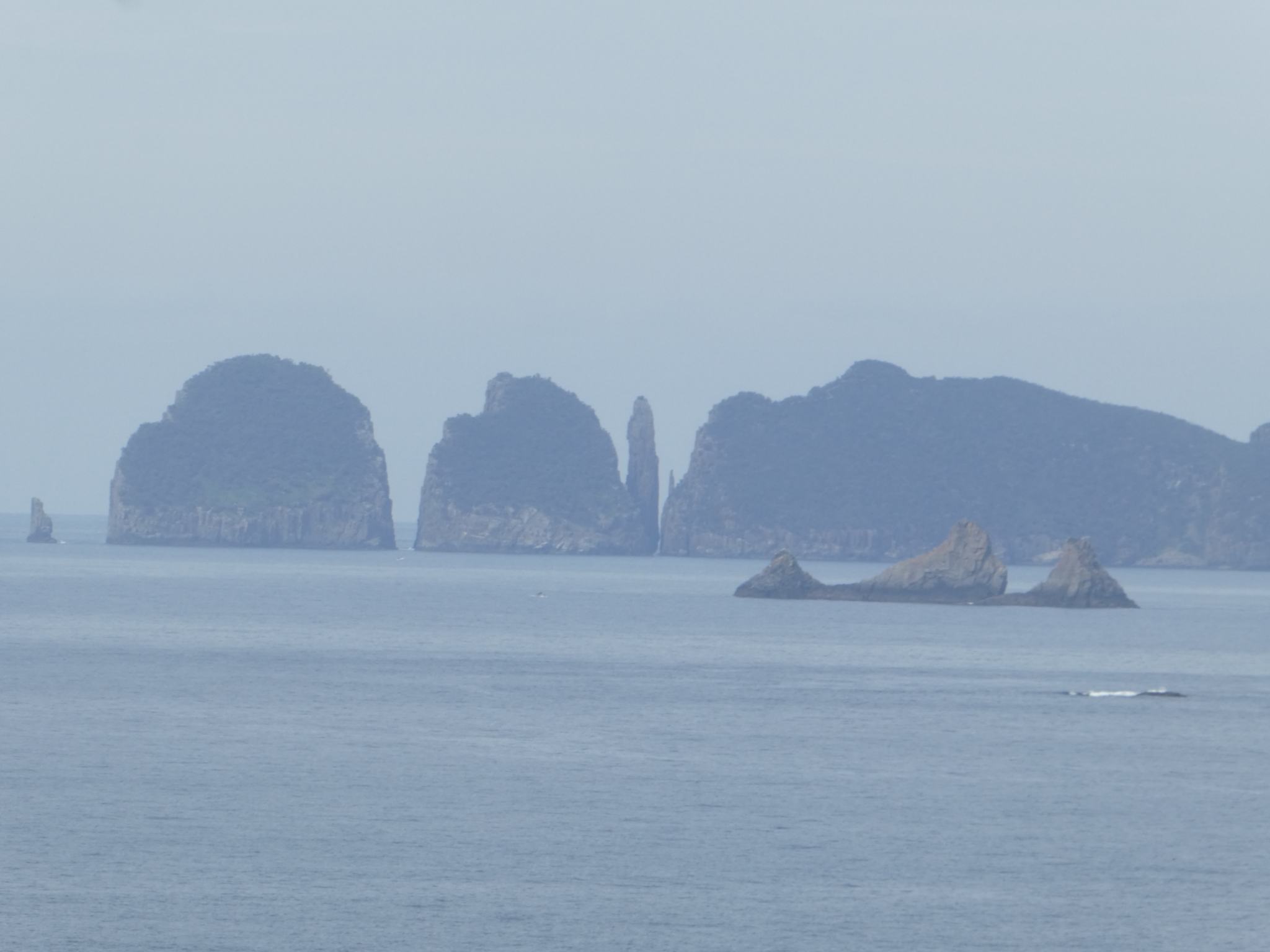 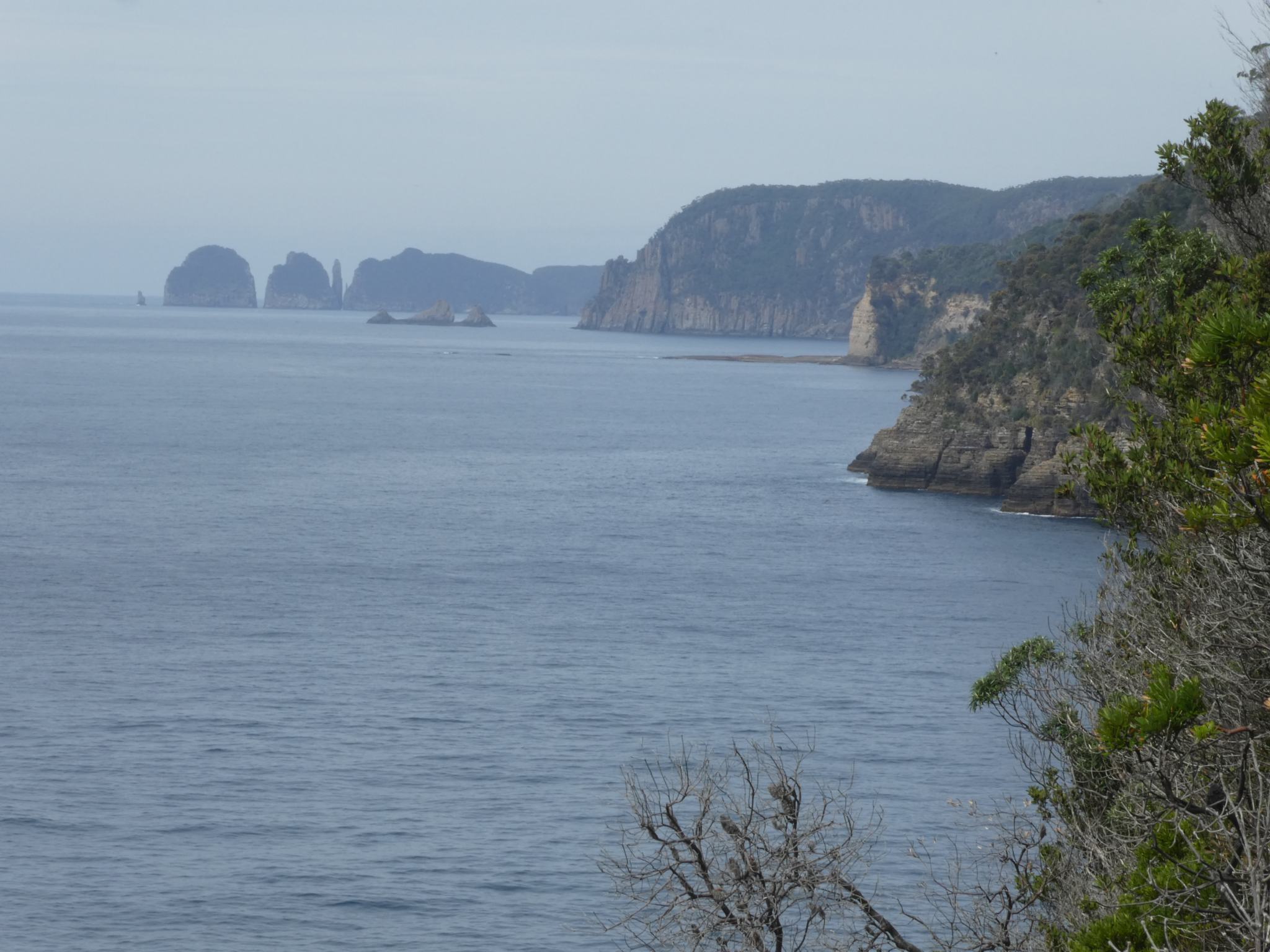 From the lookout above Waterfall Bay there is a clear view of the waterfall which gives the bay it’s name.  It only flows after significant rain, and falls directly into the sea. 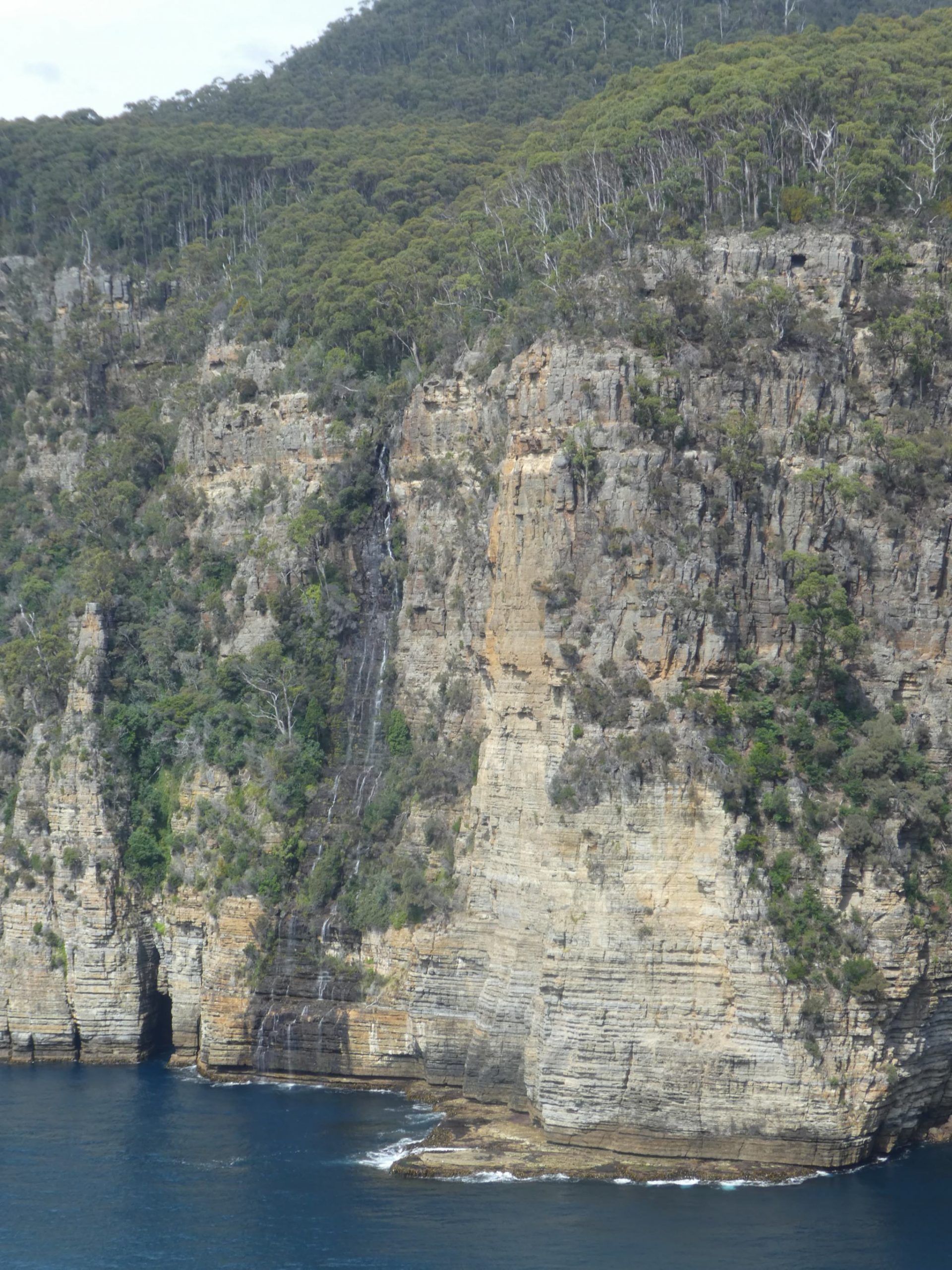 The walk is completely flat and only about 3.4km return.  Perfect for families, of which there were quite a few.  If walking the capes isn’t an option, this walk doesn’t have the dolerite columns but it does have some excellent views and at least a taste of what this fabulous coast has to offer.