Bruny is very accessible, being just 35 minutes from Hobart to Kettering, then about 20 minutes on the ferry.  But it feels a world away from ‘the mainland’ once you are there.

Although it gets a lot of visitors, there are no resorts or large developments, with most accommodation being houses or small complexes.  We stayed in an airbnb on North Bruny Island which was previously a wool shearing shed.  Facing the bay and capturing the afternoon sun setting over the water, it was a brilliant spot, and a perfect base from which to hike some of  Bruny’s excellent walking trails.

The 18km circuit track begins and ends at Jetty Beach, at the southern end of South Bruny National Park.  The inside tip here is to walk in a clockwise direction (ie starting at the track which begins behind the day use area car park) because apparently the views are better and the terrain a little kinder than walking anti-clockwise.

Walking in this direction, the track initially follows an old vehicle track now open only to Tas Parks staff for maintenance works. 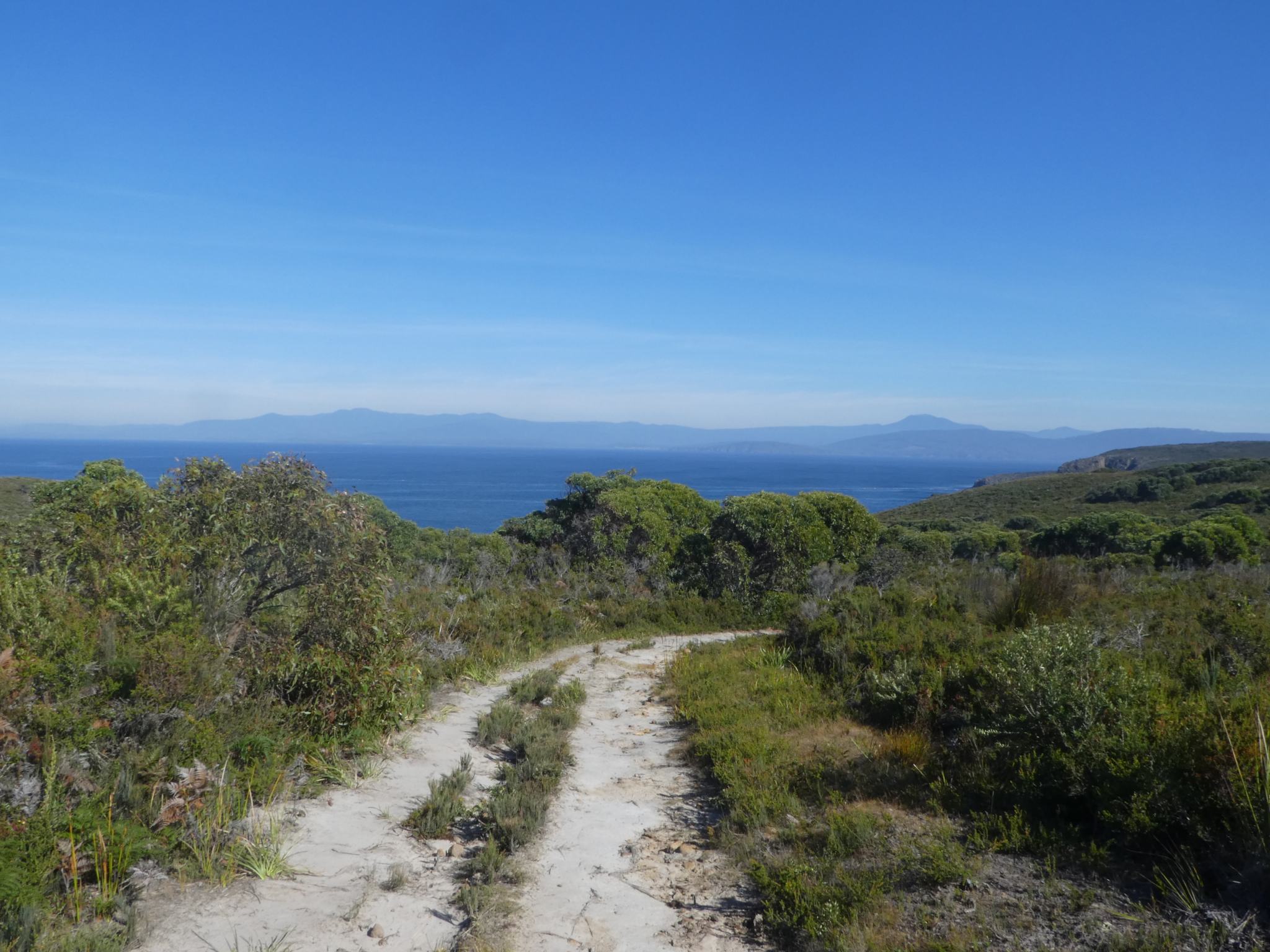 As soon as you crest the hill, there are beautiful views, which continue as the track follows the western edge of the peninsula. 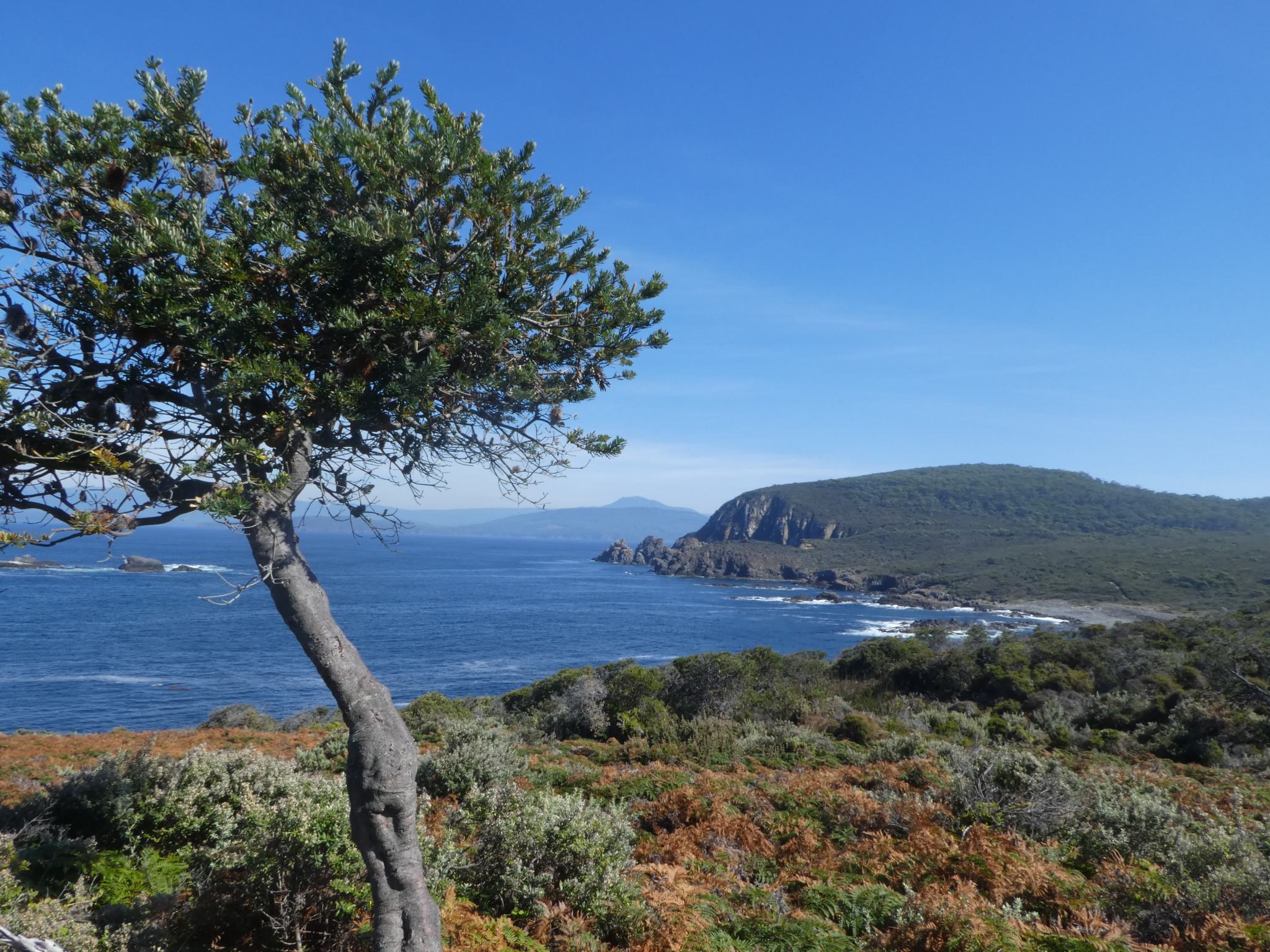 The track is gentle and an easy walk as it winds around and then up the unfortunately named Mt Bleak.  The weather was anything but, and on a clear day like this the Southern Ranges on ‘the mainland’ are clearly visible on the horizon. 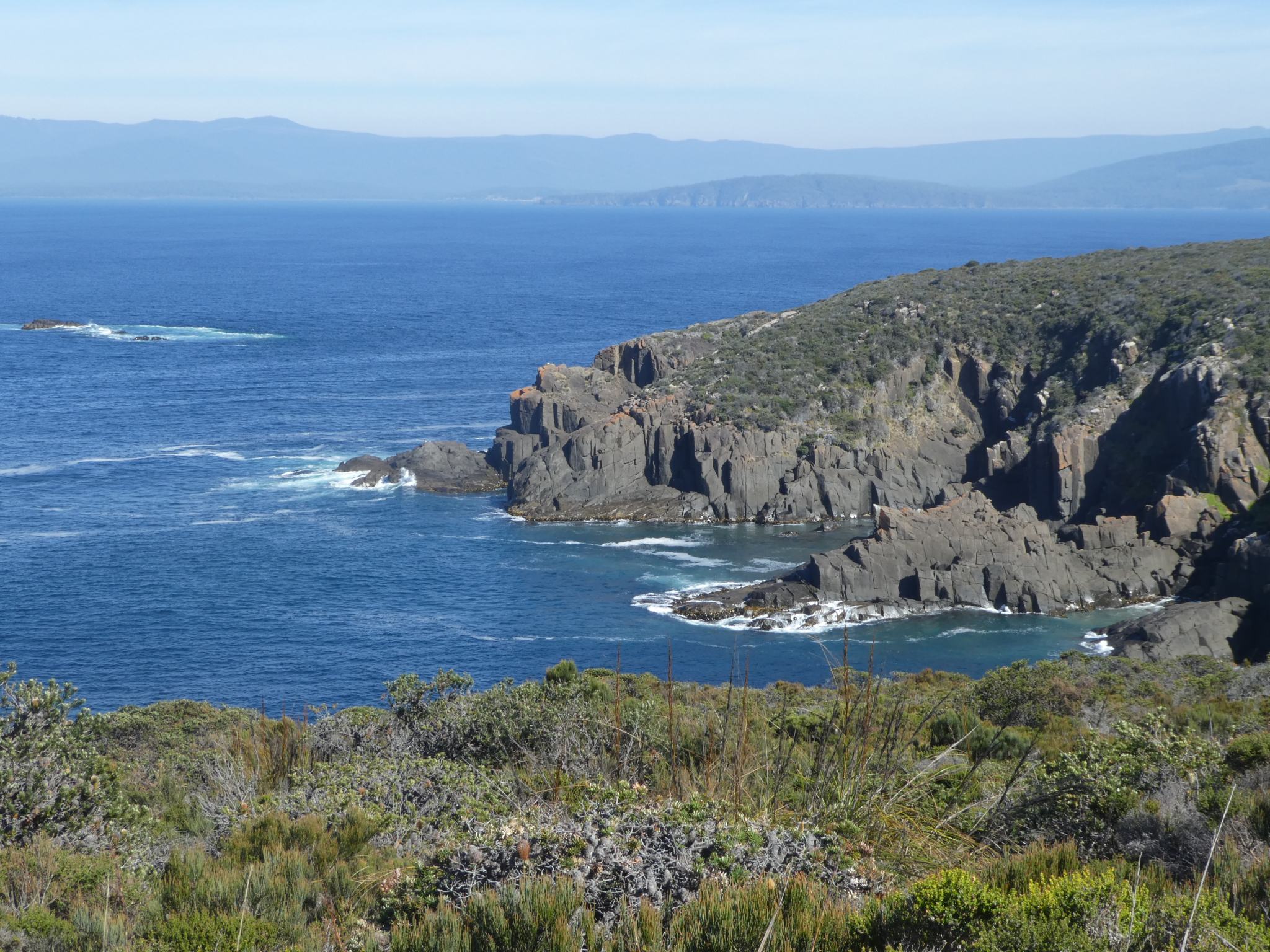 Turning eastward, the track then heads down to Hopwood Beach, the first of a series of very pretty, sandy bays. 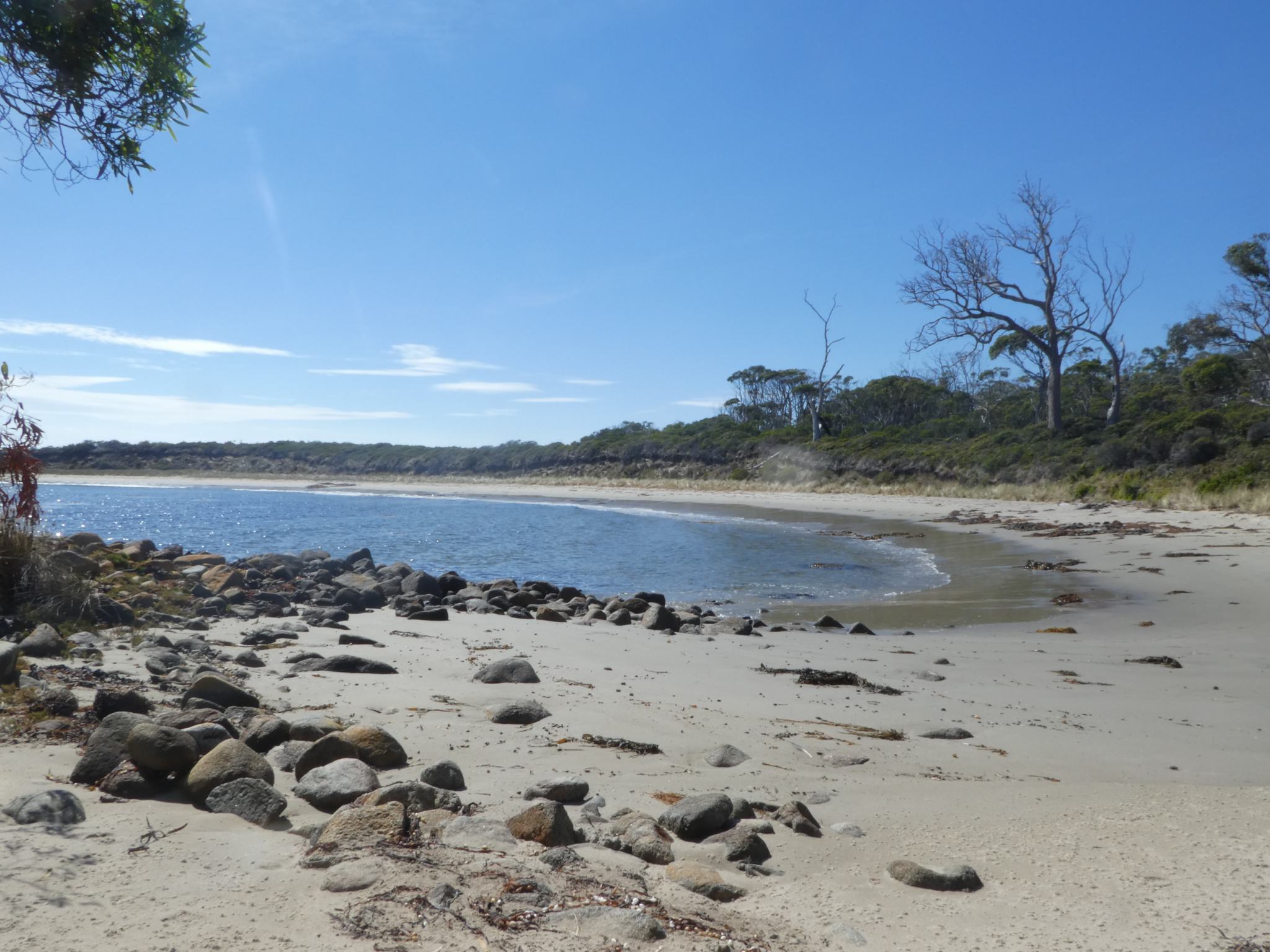 It’s a walk around the beach to where the track picks up again at the far end, over the rocky point and cutting through sclerophyll bush land to nearby Butlers Beach.

After walking the length of the beach, we perched on the rocks for a picnic in the sun.  Here’s the view looking back. 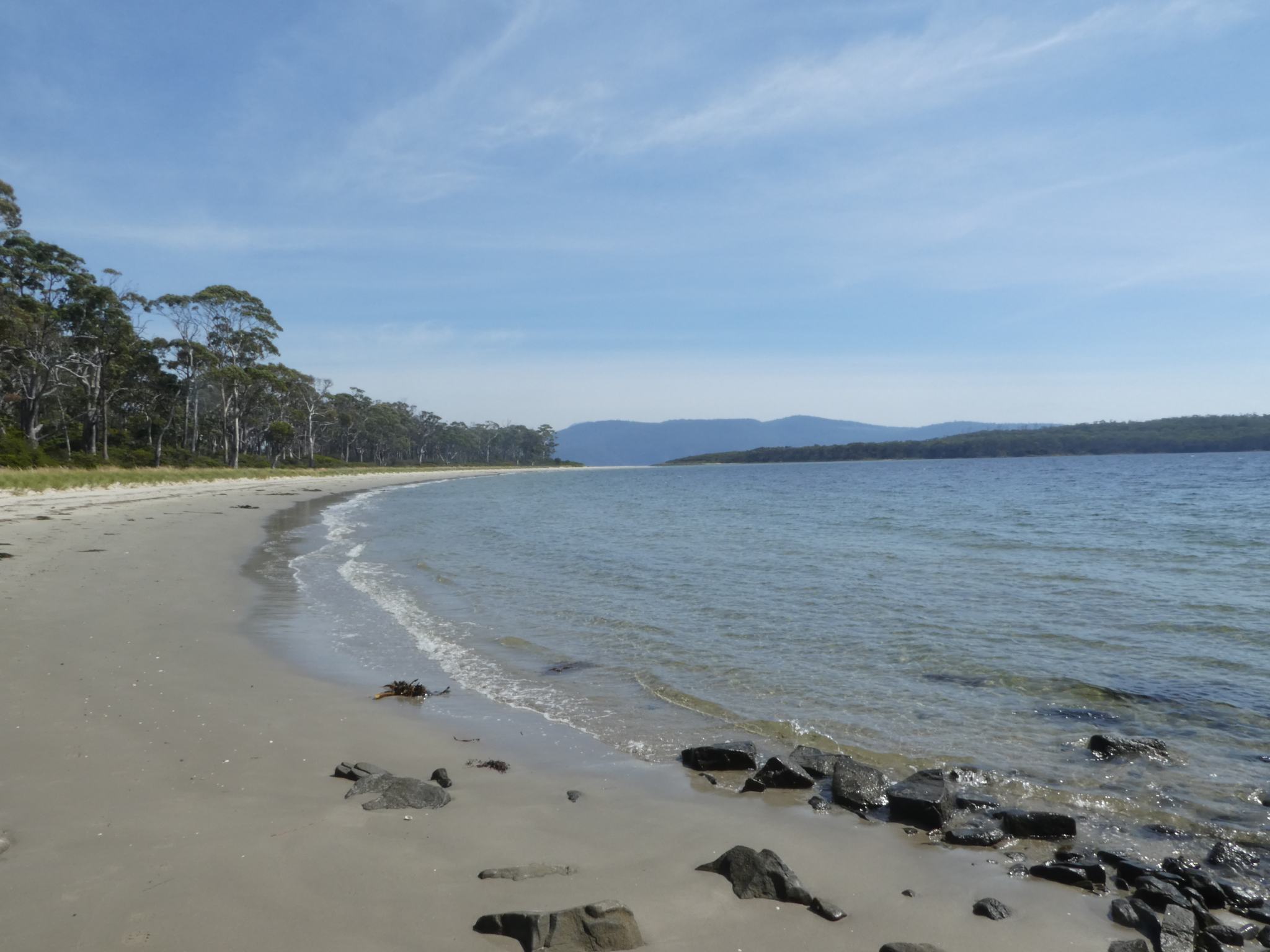 From Butlers Beach, the trail heads inland into the bush, although it’s never very far from the coast.  At the time of our walk, this section was in need of some fairly serious maintenance.  Fallen trees obstructed the path in several places and some sections were heavily overgrown.  The track was always clear, so there was no prospect of getting lost, but it made for slow going.

Eventually the track pops back out onto the coast at the eastern end of Jetty Beach. 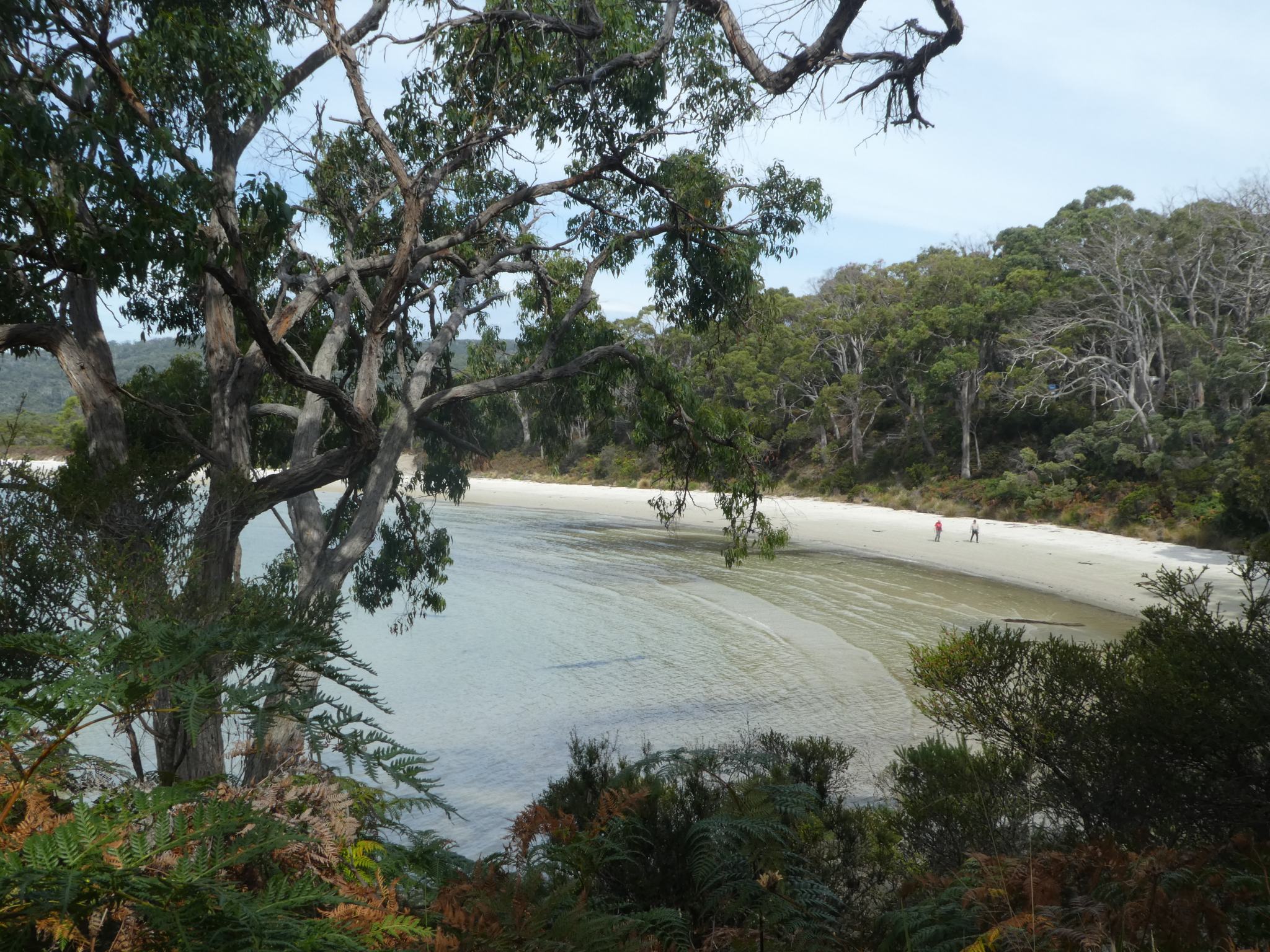 The track ends here, and it’s then just a matter of walking up to the far end of the beach where a short path leads to the car park and campground.

The trail is not difficult, there are no significant ascents or descents and the terrain underfoot is generally kind.  The track degradation between Butler’s Beach and Jetty Beach means this section is slower going, but in total the 18km walk will take about 5 hours, not allowing for photo or food stops.

From the same starting point, a short distance into the walk there is a fork to the right.  This is the Luggaboine Circuit.  It cuts across the peninsula and re-joins the Labillardiere Circuit at a junction between Butler’s Beach and Jetty Beach.  Walking this way, it’s only a 4km circuit.  It misses the spectacular views from the high points along the western side of the peninsula, and only takes in one of the three bays, but if short on time, it would still provide a good taste of what’s here.

And after the walk, before leaving the national park, it’s worthwhile taking the short deviation out to Cape Bruny Lighthouse.   Heritage listed and built by convicts in 1836, it was only the fourth lighthouse constructed in Australia.  Although now decommissioned, it still holds the record as the longest continuously manned lighthouse in the country.  It’s also the only lighthouse in Southern Tasmania open for tours. 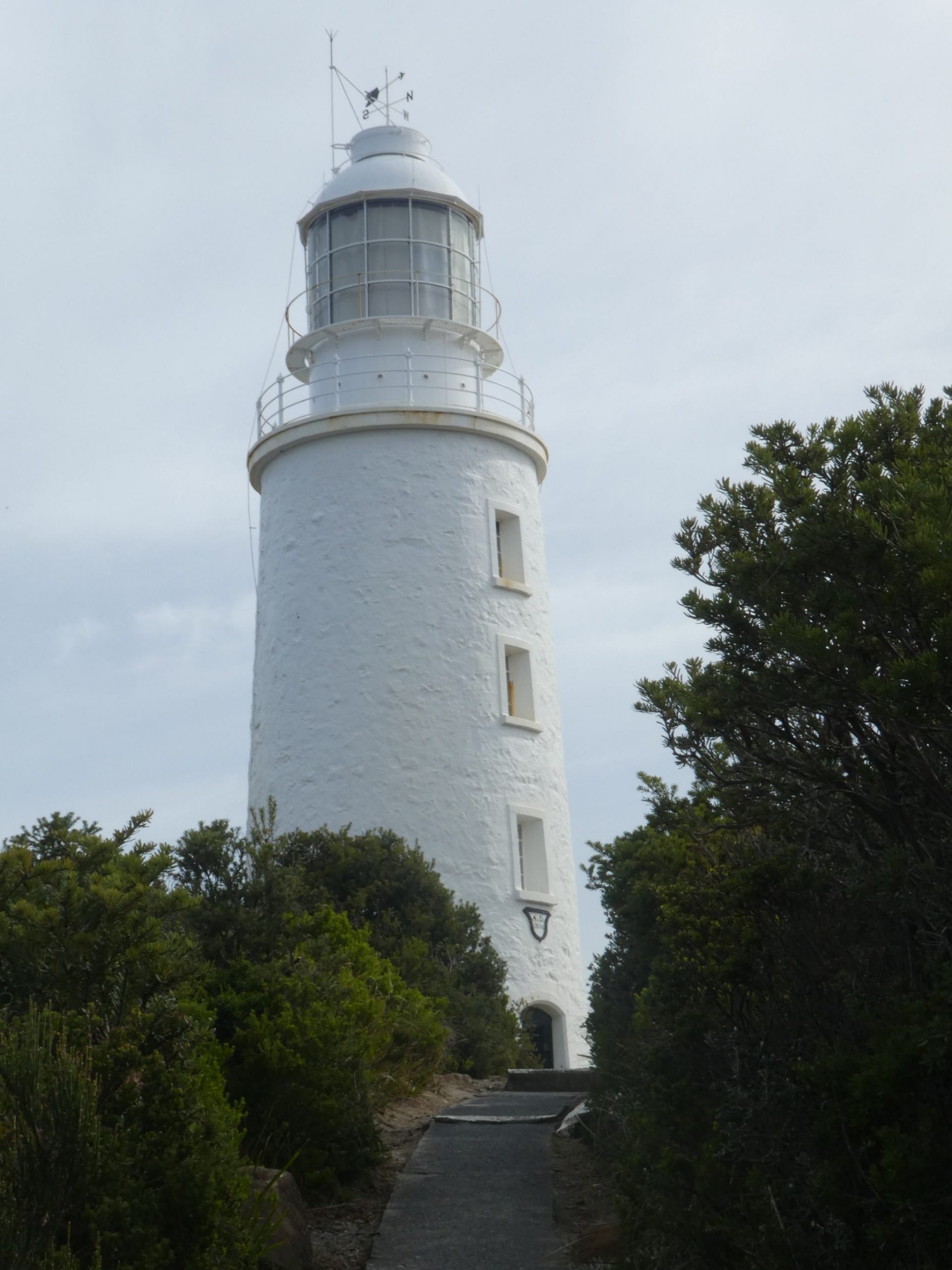 There is a short uphill track from the car park to the lighthouse and a few winding paths spreading out and around the cliffs with sweeping views up and down the coastline. 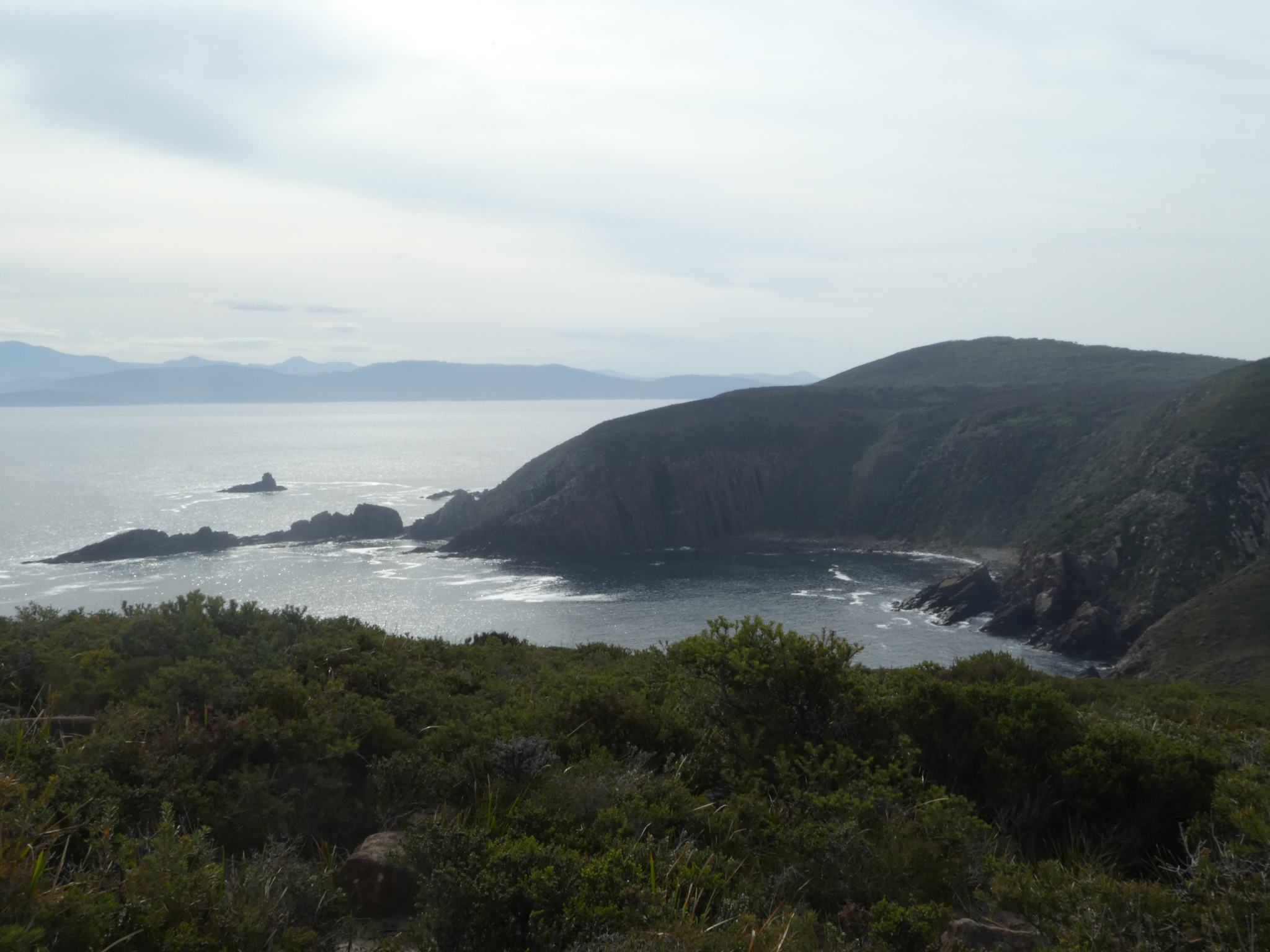 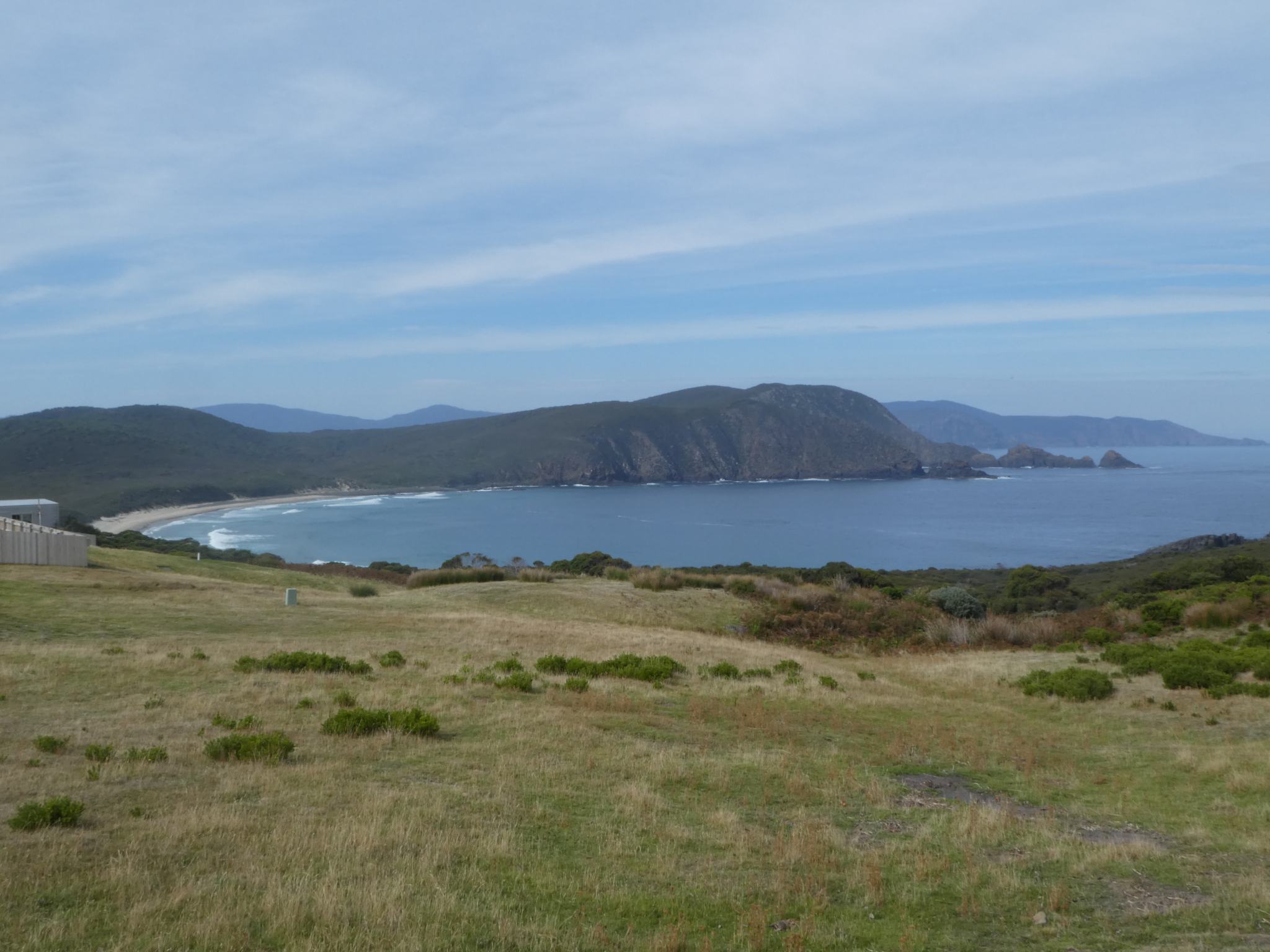 Further along, it passes between the imaginatively named Big Lagoon and Little Lagoon.  Big Lagoon is home to many species of nesting birds.  Little lagoon was almost completely dry at the time of our visit.

Past the lagoons, the track forks and there are two options.  Neck Beach is directly ahead and at low tide it is possible to walk to the Beach and head left around the headland to Miles Beach where there is a small rock arch.

Alternatively, as we did, where the track forks, you can take the left hand track and head cross country, essentially parallel to Neck Beach and ascend Mars Bluff for a panoramic view back over Neck Beach with Big Lagoon sitting just behind it. 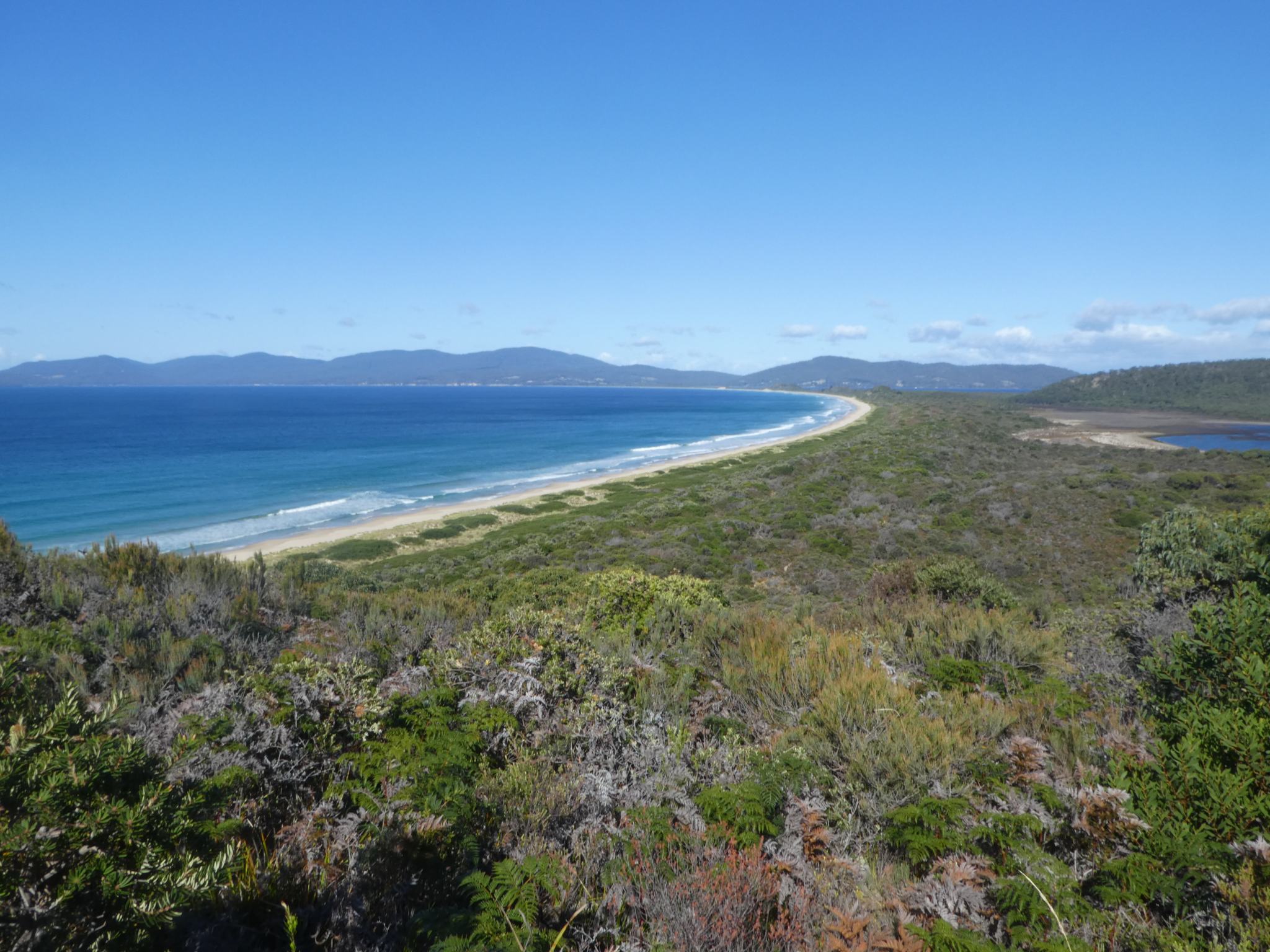 And then from the top of the Bluff there are sweeping views in the opposite direction along Miles Beach and up to the tip of Cape Queen Elizabeth. 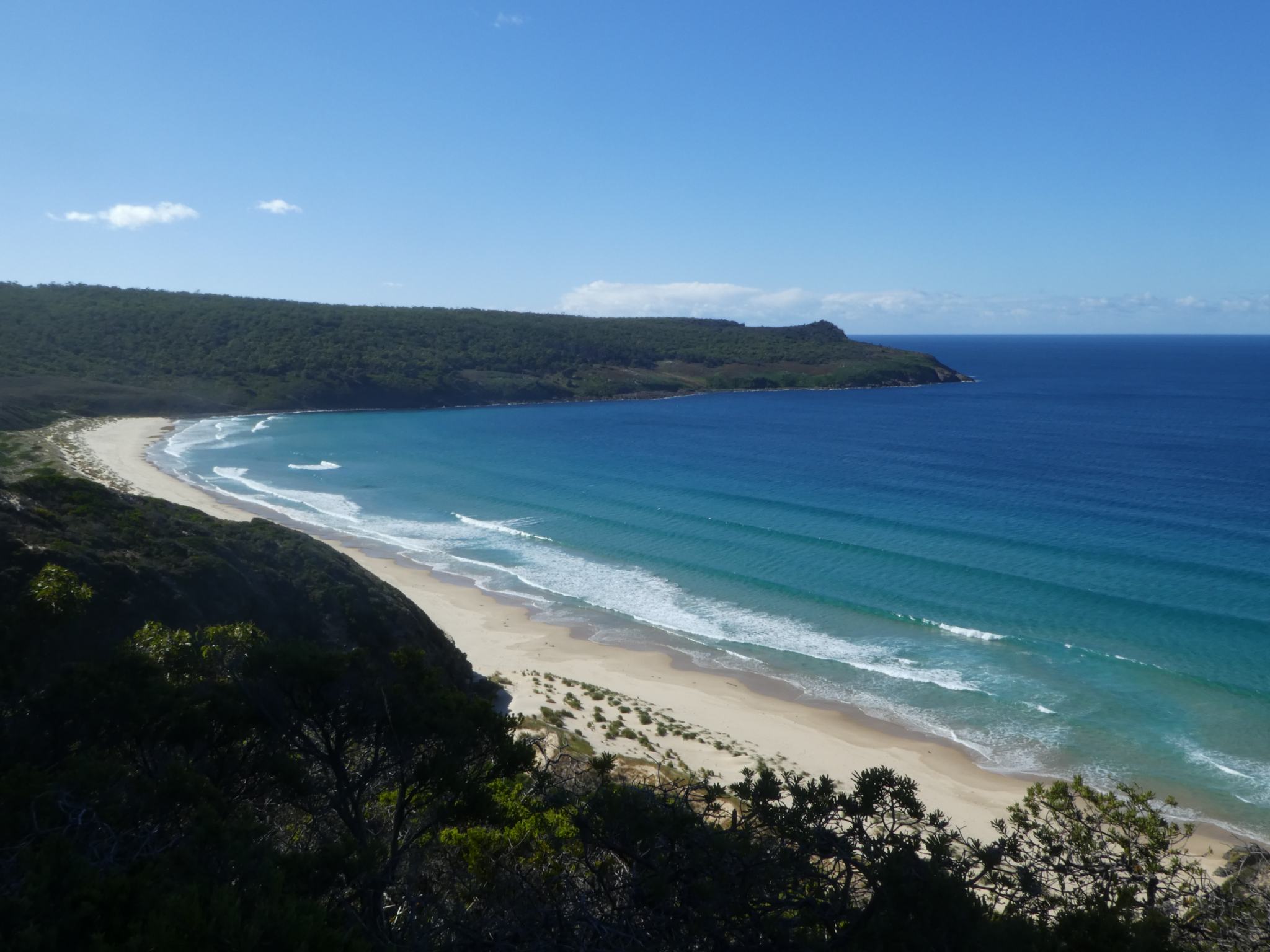 The track descends from Mars Bluff back down to sea level and then it’s a clamber over the dunes to Miles Beach.  To the right it’s a short walk to the rock arch.  To the left, it’s a pleasant walk along the beach to the far end, then a short hike up to the tip of the next bluff and out to the far end of Cape Queen Elizabeth, with views out to sea and back down as far as Adventure Bay on South Bruny Island. 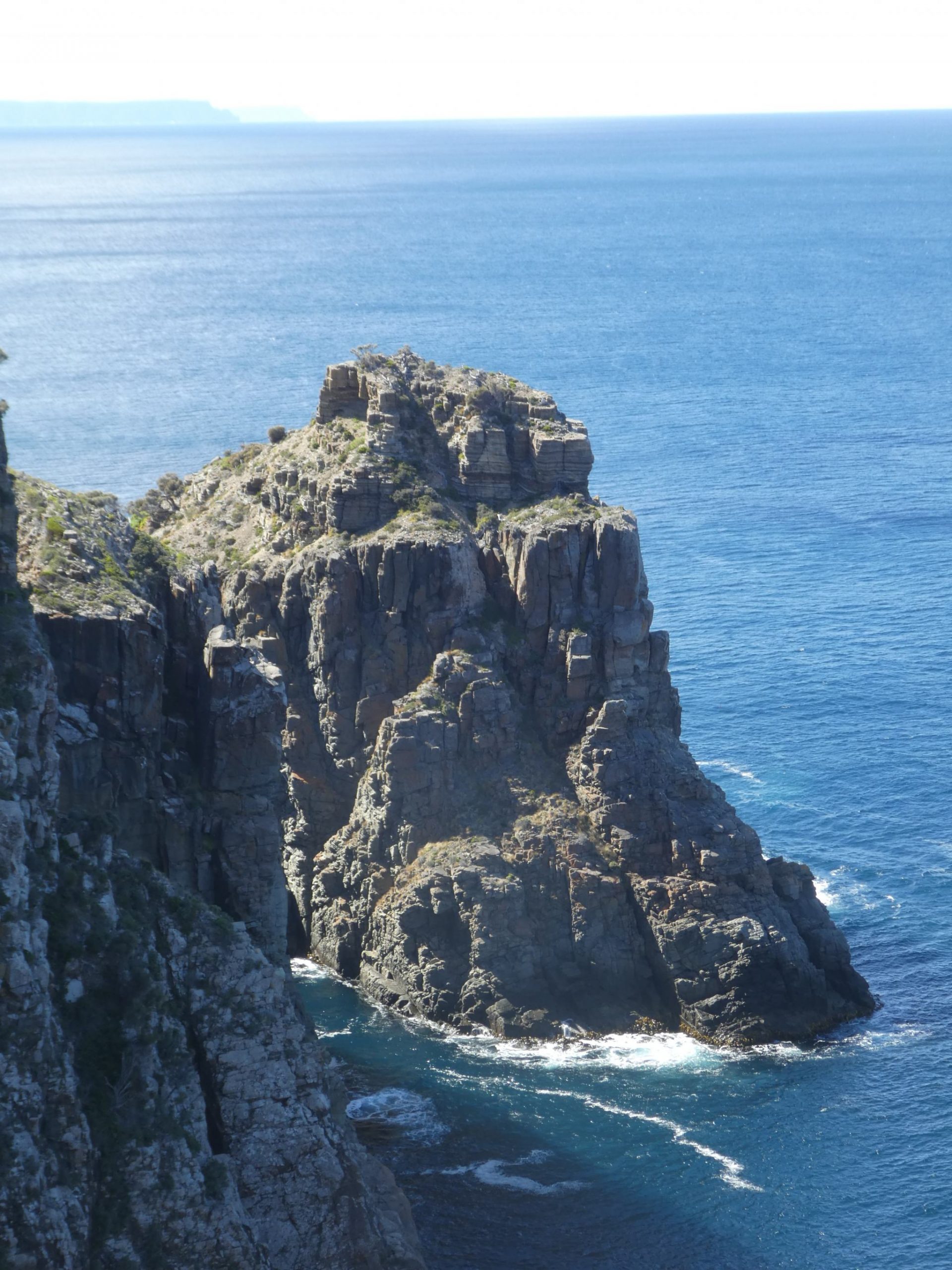 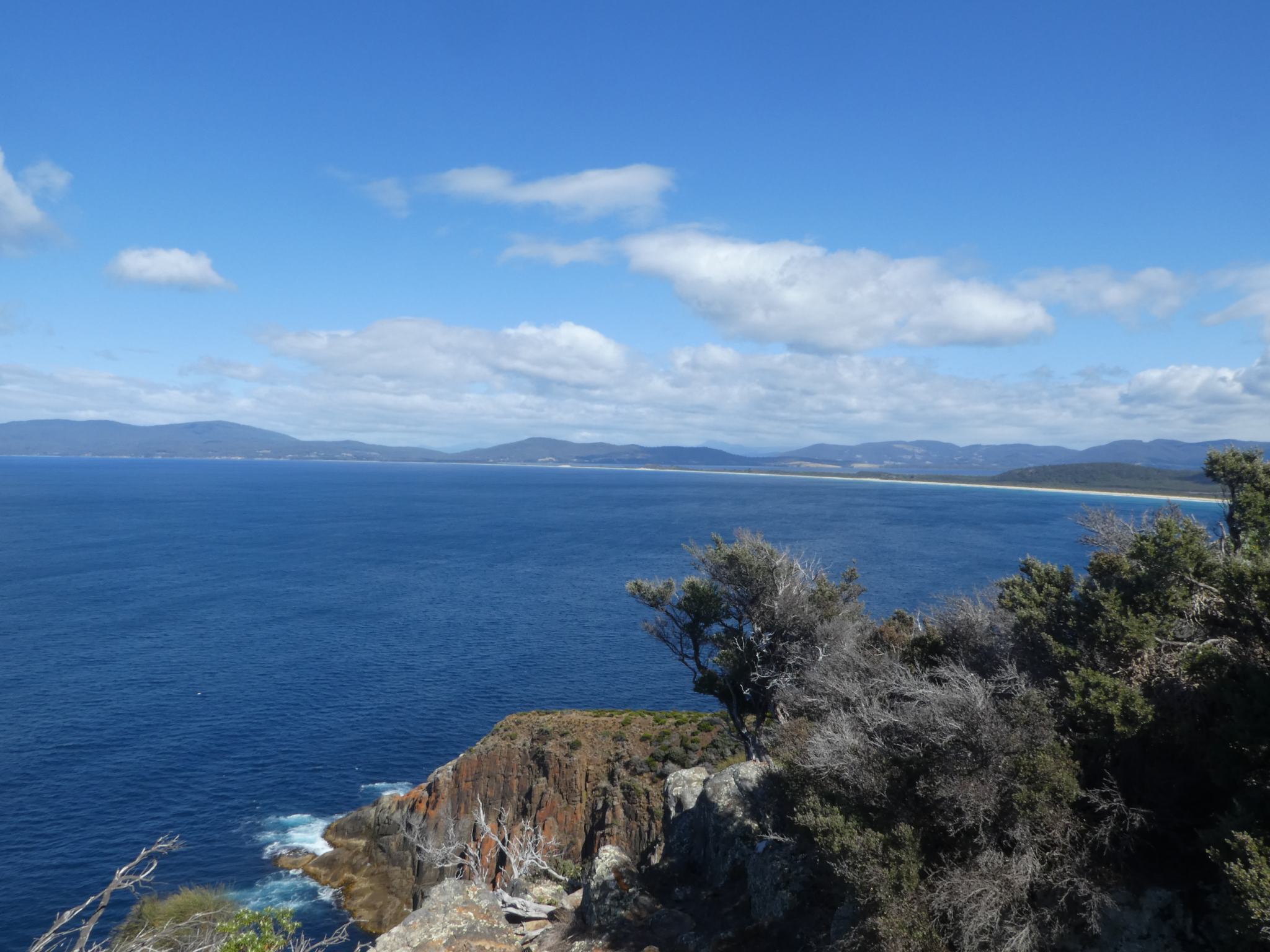 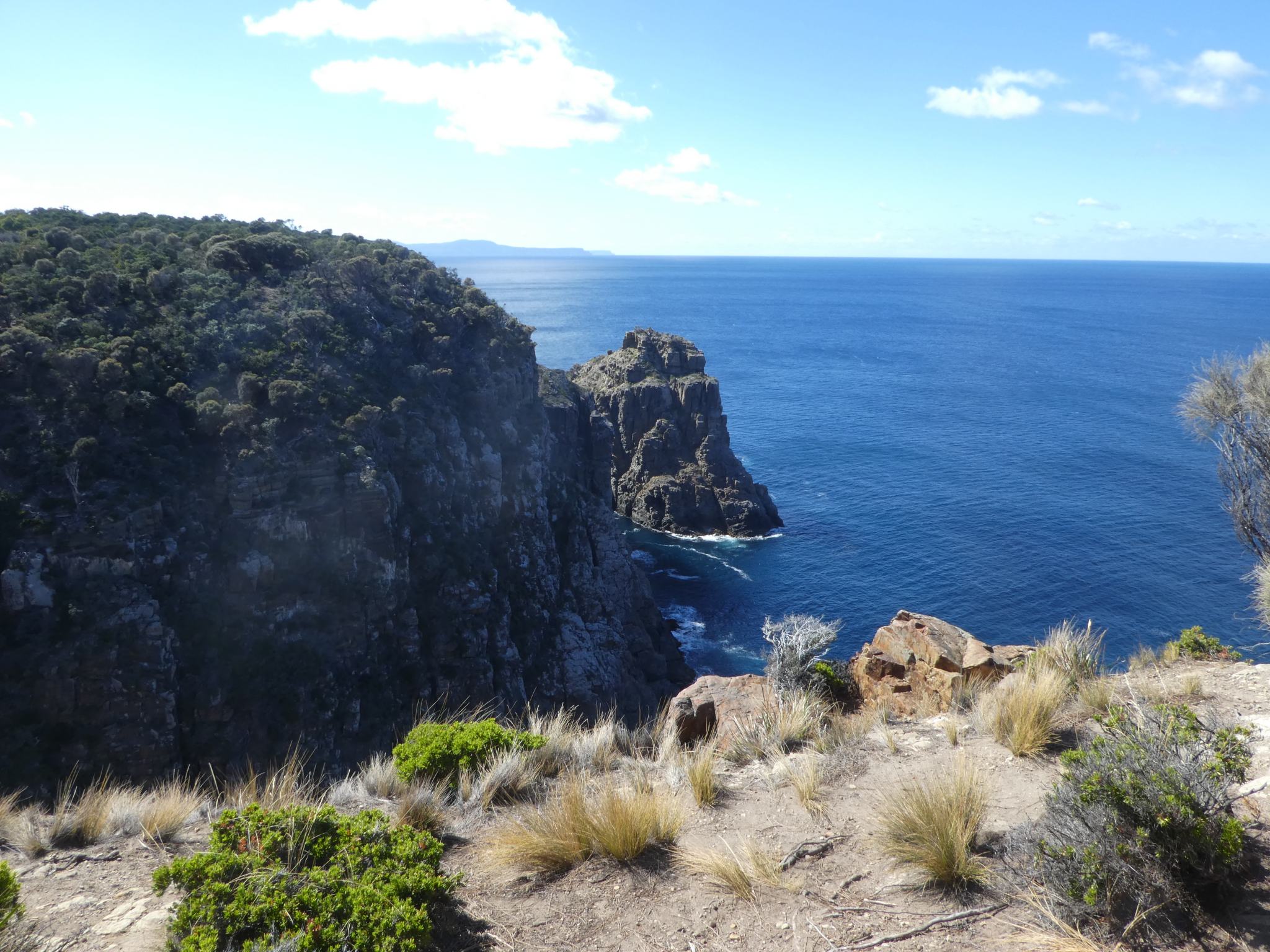 And then the same in reverse to return.  It’s a total of 12.6km, an easy track to follow and not arduous.  An excellent day out when the weather was as perfect as this.

The Neck is the narrow 5km long isthmus joining North and South Bruny.  247 steps lead to a lookout with 360 degree views to each side of both.  Probably every visitor to Bruny comes here, and even in these COVID times it’s hard to get ‘that’ photo of the steps without random strangers appearing.  But if you wait long enough… 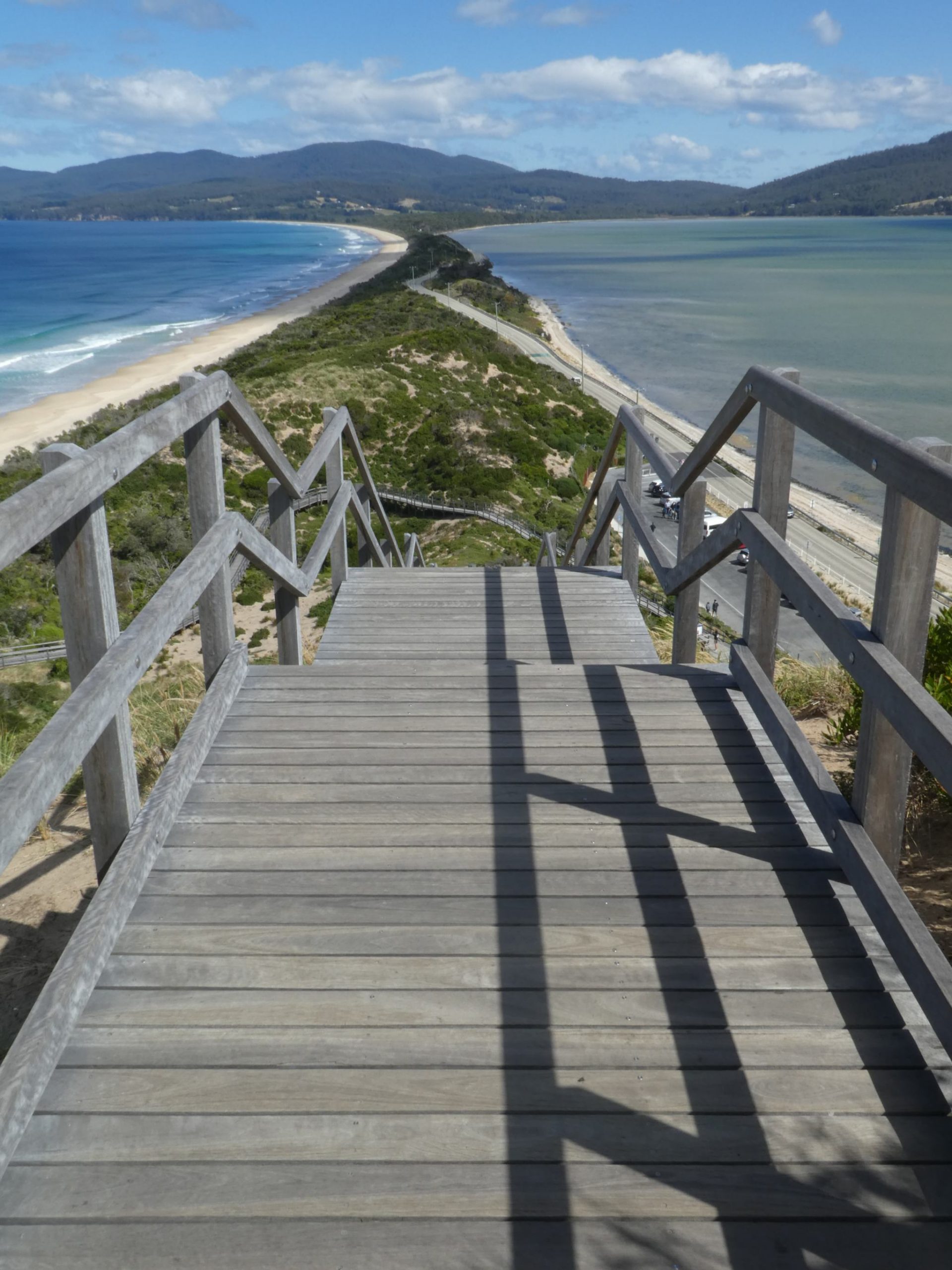 Perhaps the most recognised image of Bruny Island is the view from Truganini Lookout at the top, looking down the isthmus to South Bruny. 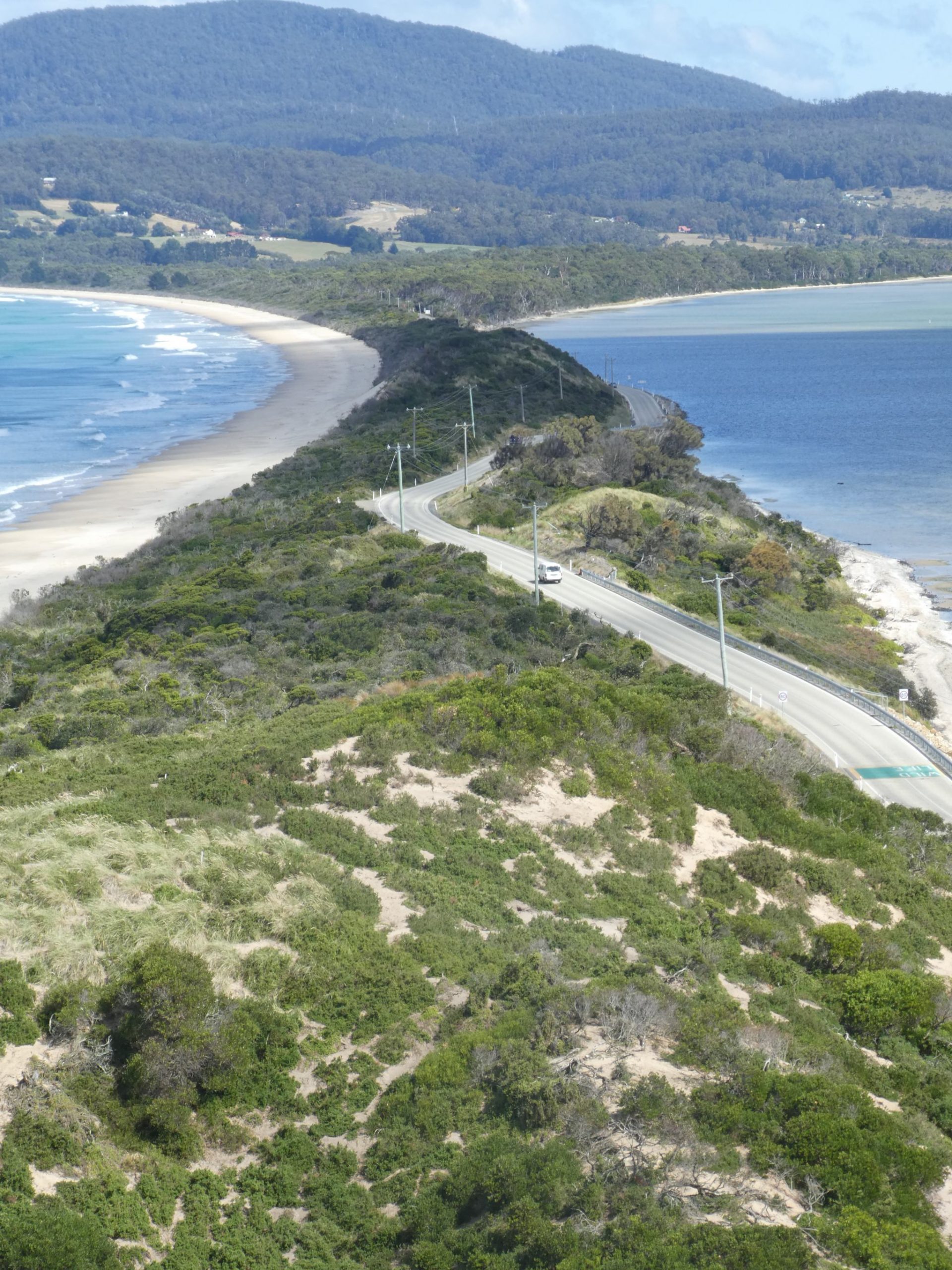 These dunes are riddled with the burrows of fairy penguins, who spend the day at sea and can be seen trudging back up the beach to their homes in the dunes around dusk.  A boardwalk down to a lower viewing platform near the shoreline enables up-close viewing.   Also known as little penguins, these are the only species to breed in Australia, and the Neck is a key habitat for them. 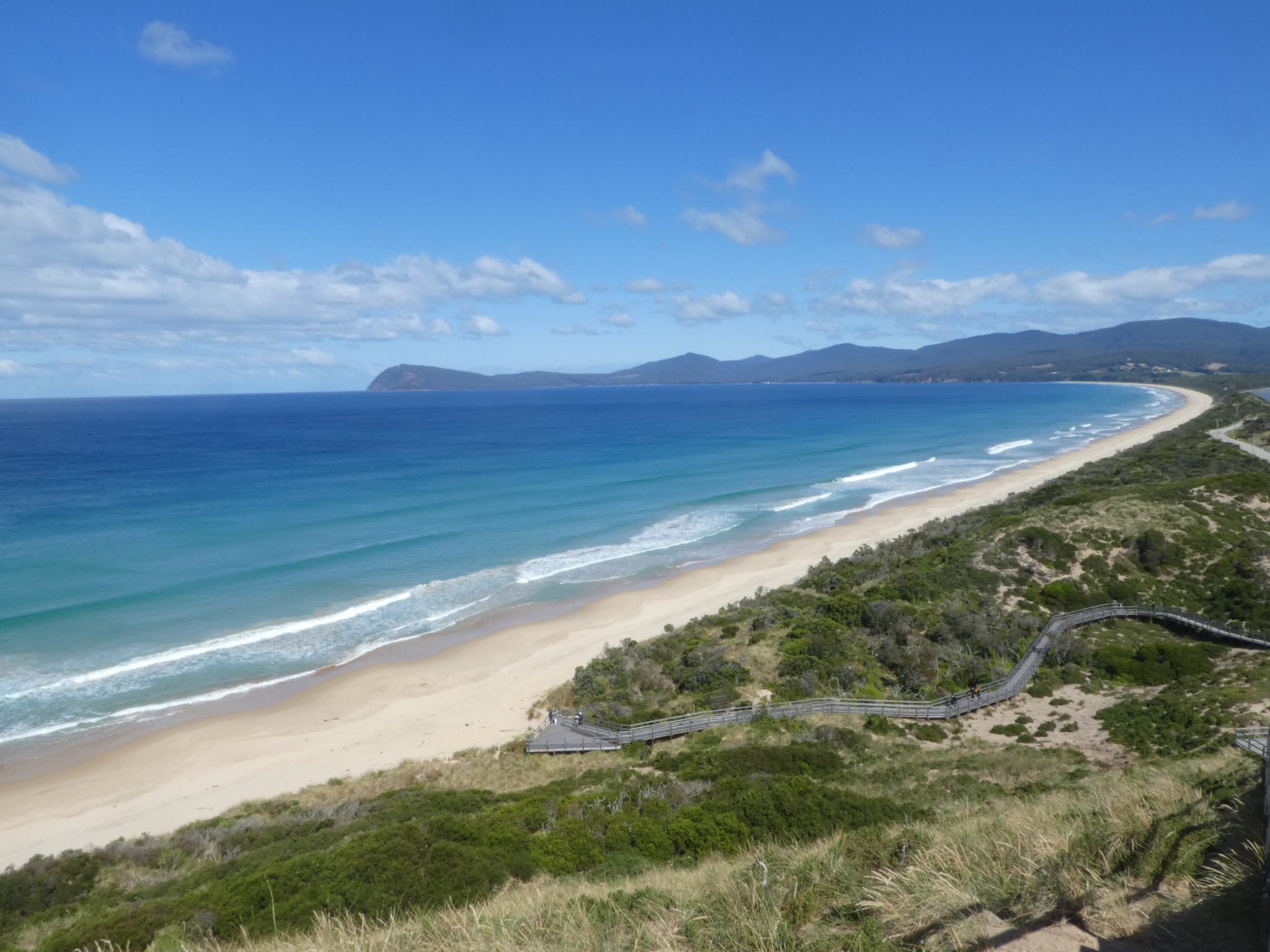 There are many other great walks on Bruny.  We did the short but historic Alonnah to Sheepwash Bay trail, which follows the old rock wall carriageway between the former sites of two colonial-era jetties once used by bullock drays to cart timber to be loaded onto ships for transport to Tasmania.

We ran out of time to do the Fluted Cape track and East Cloudy Head track, but would love to return to Bruny, so maybe we will get another opportunity.

And Bruny Island is not just about the walking.  There isn’t much by way of a restaurant scene, but for it’s size and population, it’s produce is punching well above it’s weight.  It’s a little pocket of gourmet delights, boasting the Get Shucked Oyster Farm and Cafe, the Bruny Island Chocolate Co and Bruny Island Honey.

Oysters on the deck of our digs was becoming quite a theme of our Tassie trip. 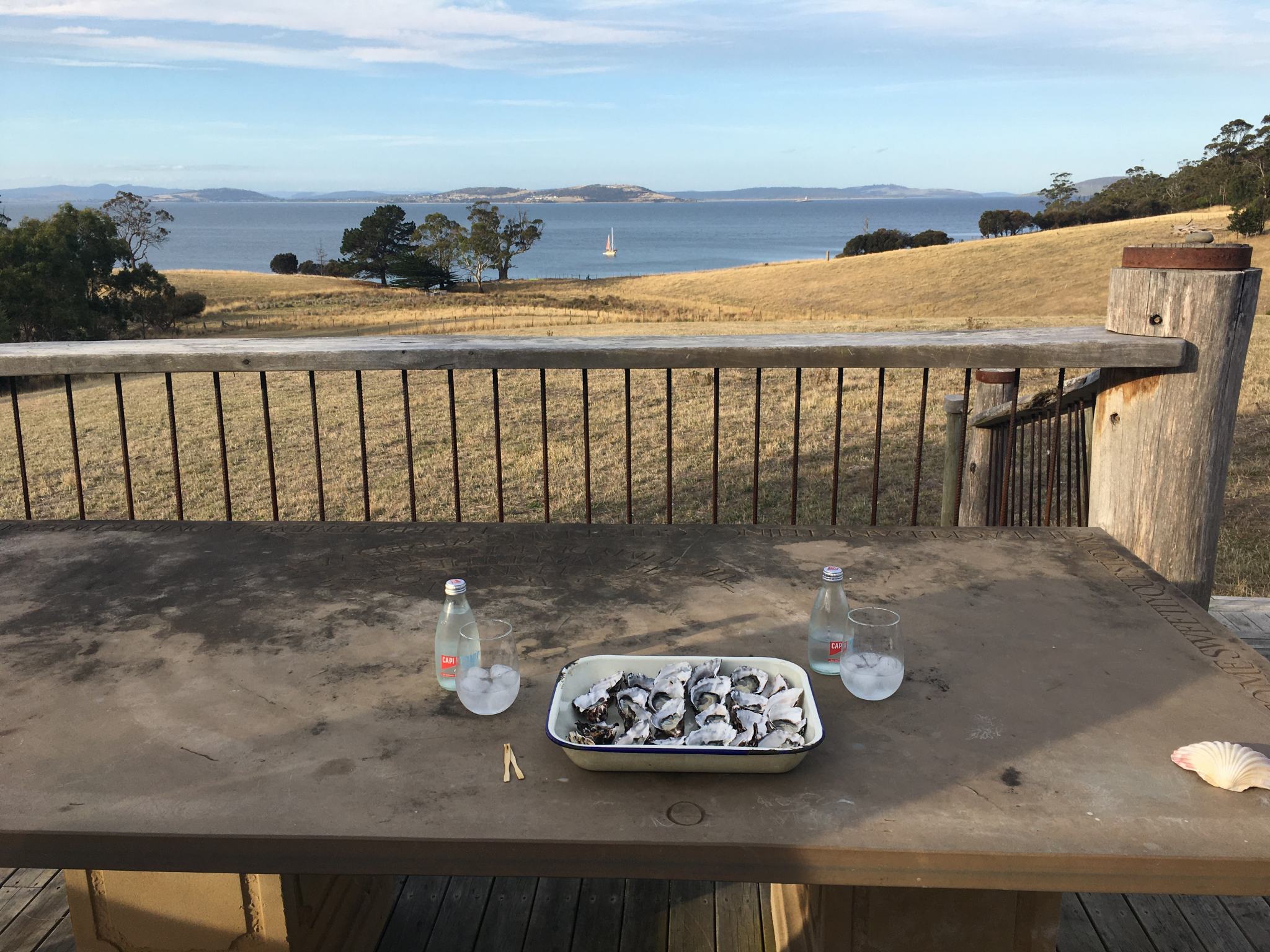 But best of all is the Bruny Island Cheese and Beer Company.  Small production gourmet cheeses, artisanal bread baked on the premises, pickles and condiments to complement the cheese, great coffee, and craft beers on tap available for tasting by the paddle.   All served in their garden cafe or available to take away.  What better way to wind down after a long walk?