The Tarkine isn’t a specific site but is generally considered to refer to the area bounded by the Arthur River in the north, the Pieman River in the south, the coast to the east and the Murchison Highway to the west.  In less technical terms, it’s a vast and relatively untouched swathe of northwest Tasmania.

Despite a history of mining and logging in the area, some of which continues to this day, it is still Australia’s largest remaining single tract of virgin temperate rainforest.  Indeed, it’s the second largest area of Gondwanan cool-temperature rainforest in the world.

But part of its allure is that it isn’t just rainforest.  It’s also got heathland areas, exposed mountains, buttongrass moors and coastal areas which are mindblowingly beautiful.

Environmentalists have been fighting to protect the Tarkine since the 1960s, with varying degrees of success depending on your philosophical perspective.  A 21,000 hectare strip along the coast has been declared national park, a mere fraction of the 450,000 hectares which conservationists submit meet the criteria for World Heritage protection.  Many other areas have at least some level of protections under various ‘conservation area’ and ‘regional reserve’ designations, but sustainable logging is permitted in some areas, and future expansion of mining has not been completely ruled out.  Preserving this fragile and beautiful place remains an ongoing challenge.

Despite Tasmania’s relatively small size, most tourists to the Apple Isle don’t make it here, but it certainly is worthwhile.

Unless you are camping or towing your own home-on-wheels, there’s very little accommodation in and around the area, so we ended up accessing the area from two peripheral entry points.

We first stayed in Waratah, unfairly described to us by a Hobartian as ‘a petrol station’.  Yes, it is a small town with no restaurants or shopping to speak of, but the local Bischoff Hotel was a relaxing slice of country life and served some damn good pub food.

Established in 1871 when tin was discovered in the area, Waratah is recognised as the oldest mining town in Tasmania.  By the 1880s nearby Mount Bischoff was the richest tin mine in the world and in 1883 the mine became the first industrial plant in Australia to be lit by electricity.

The town is rich in history and has a surprisingly interesting little museum with displays about it’s role as the epicentre of tin mining in the late 1800s and into the mid 1900s.

There’s the added bonus of some lively platypuses in the lake in the centre of town, which can easily be seen foraging – or were they doing laps? – around dusk.

According to locals, Waratah is the only town in Tasmania with a waterfall right in the centre.   There’s a a fair flow of water over Waratah Falls, at one time powering seven waterwheels. 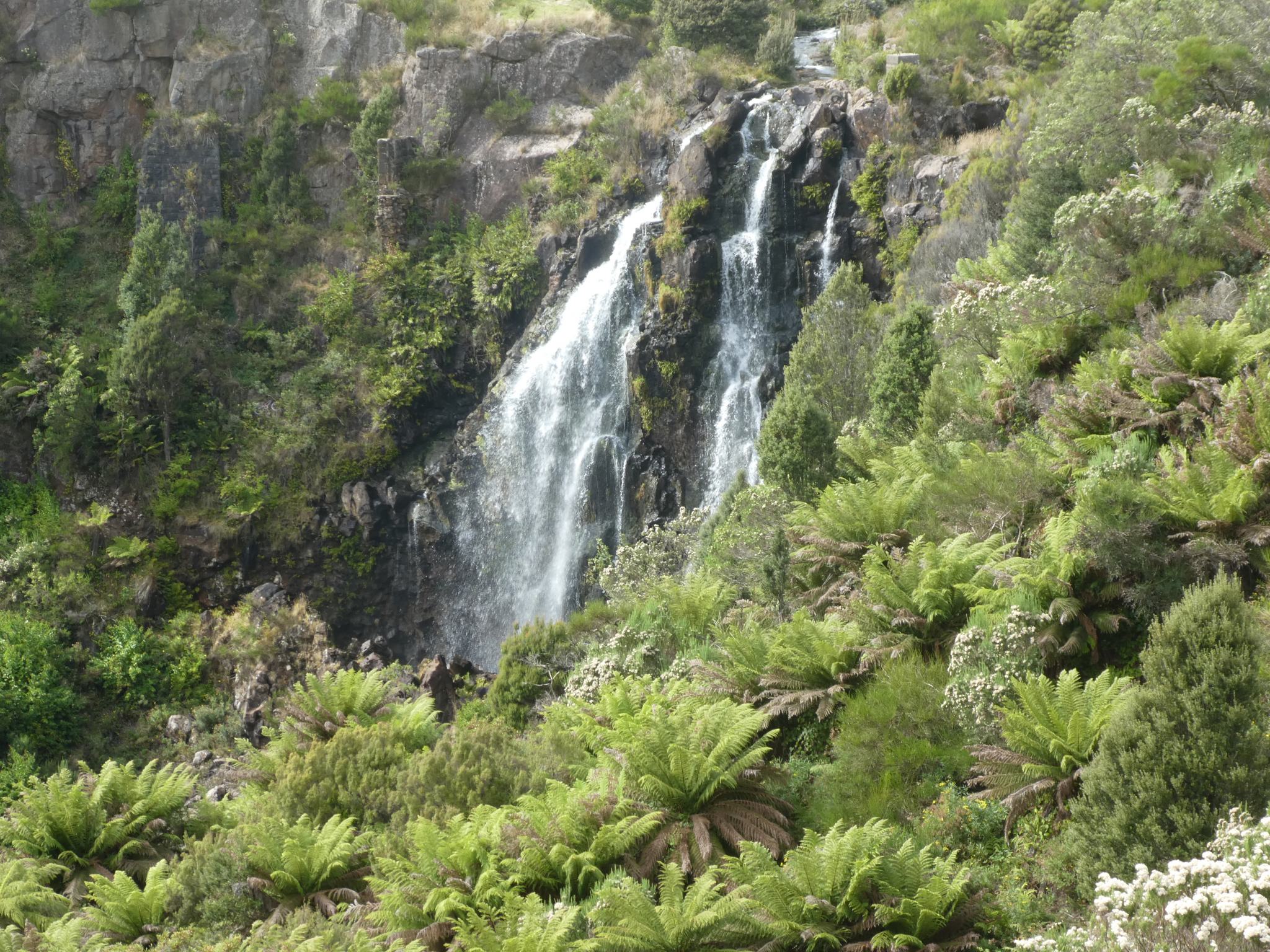 Pick up a hand drawn map from the Bischoff Hotel and you can find your way around an informal circuit from Waratah Falls down to an abandoned power station and on to Ringtail Falls.

From Waratah Falls, follow the road to the edge of town north west of the hotel, where an overgrown muddy track plunges down from Mount Street through dense forest to creek level.  It’s officially ‘closed’ as no one has taken responsibility for maintenance but is certainly walkable, although the steep gradient, mud and the need to climb over or under substantial tree falls mean care is required.  A few signs warn ‘elderly and unfit advised not to go’. 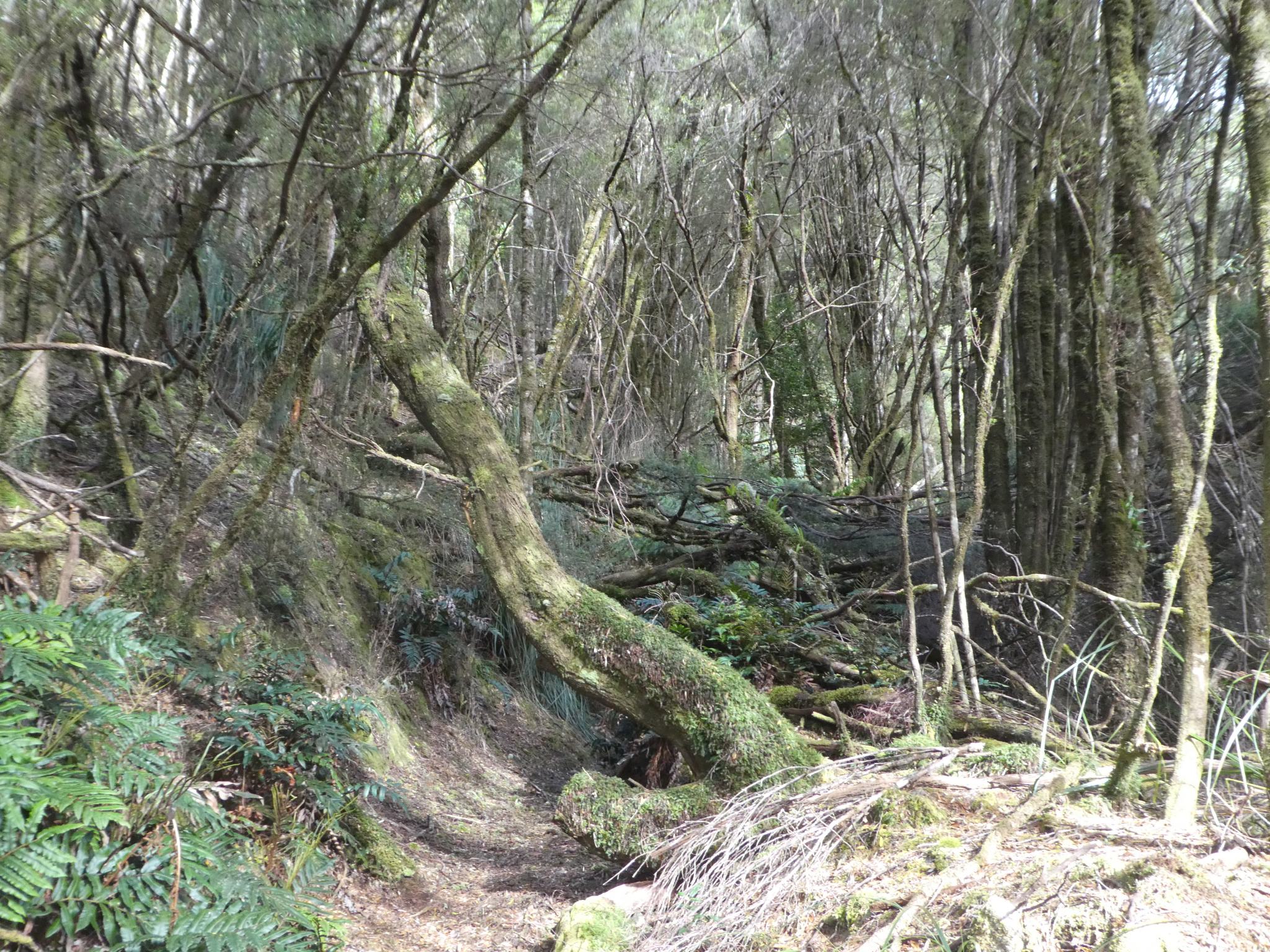 Eventually the track levels out and forks down to the Bischoff Powerhouse.  Built in 1906 to provide power for processing operations at the Mount Bischoff mine and to power Waratah town, it was Australia’s second hydro electric power station and relied on a series of water races channelling water into a sluice 170 metres above.

A landslide near Waratah Falls in 1952 destroyed a major section of the water race rendering power generation impossible.  The damage was never repaired and the power station was partially dismantled, the remainder abandoned to be gradually reclaimed by the forest.

Time has not been kind and little now remains there. 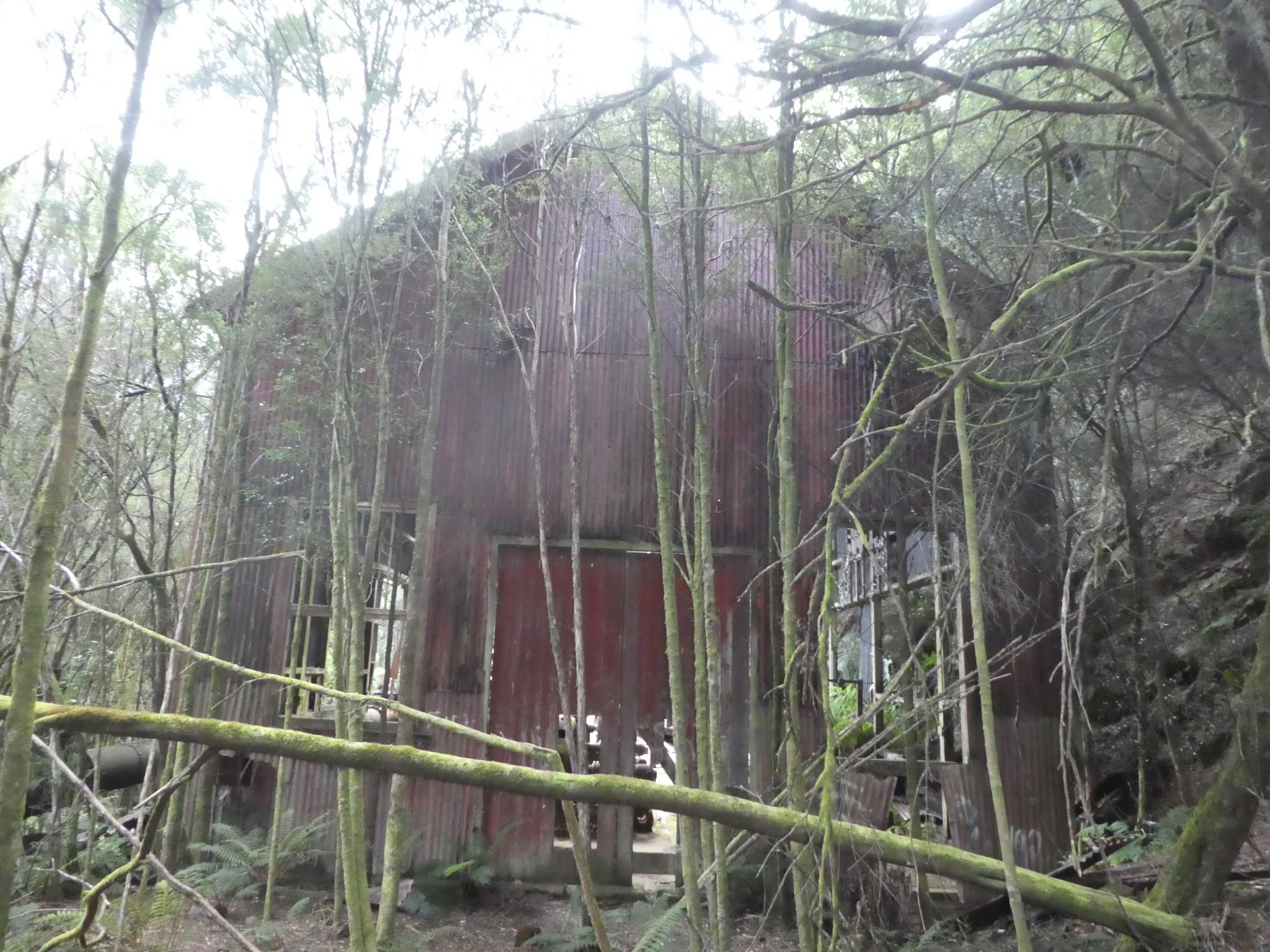 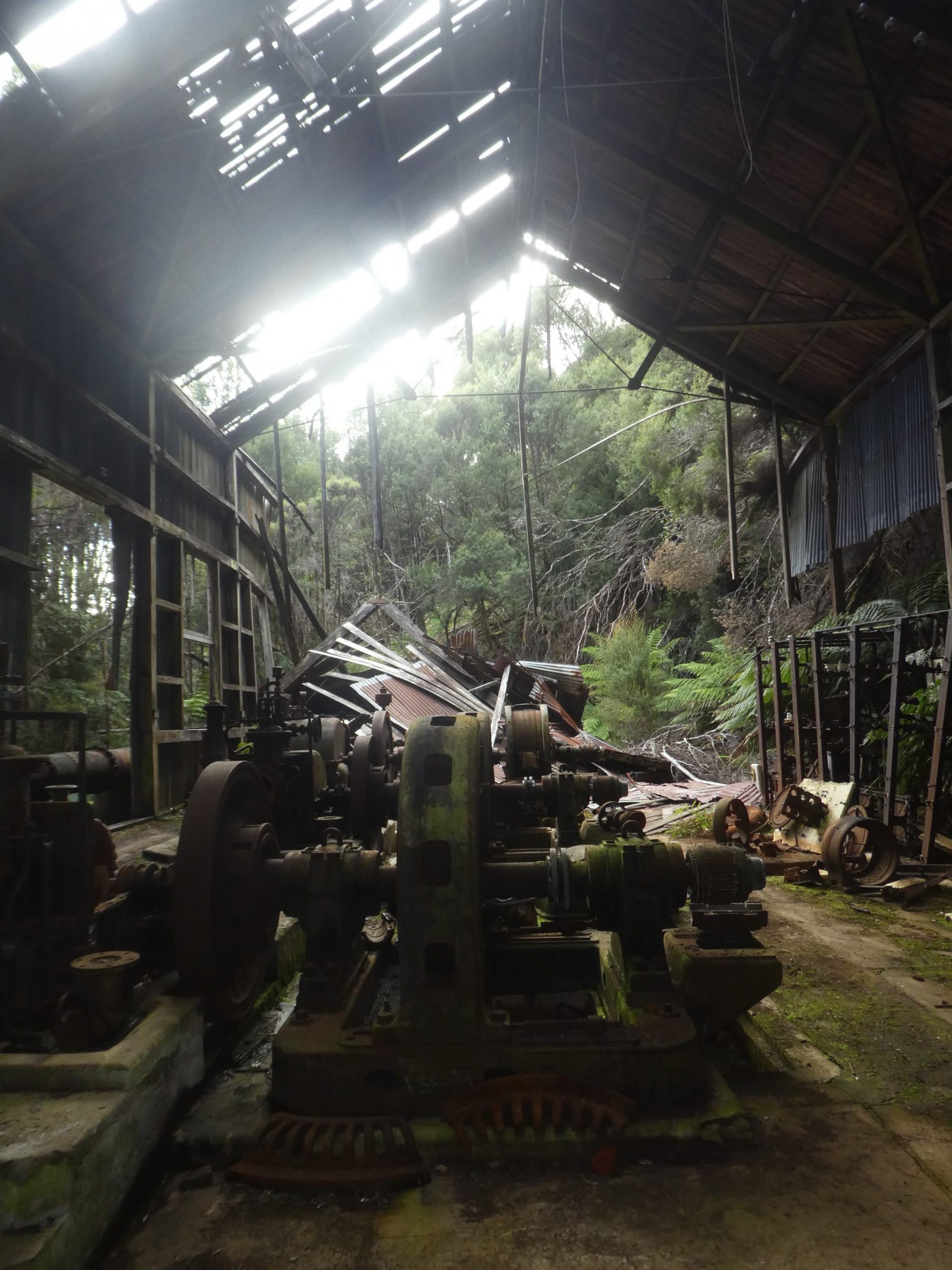 Following the creek for another few hundred metres is a track to Ringtail Falls.  This photo is of the base of the falls.  The whole waterfall is far more impressive, but we would have had to wade into the creek to get a shot looking up.  Sorry, not that committed! 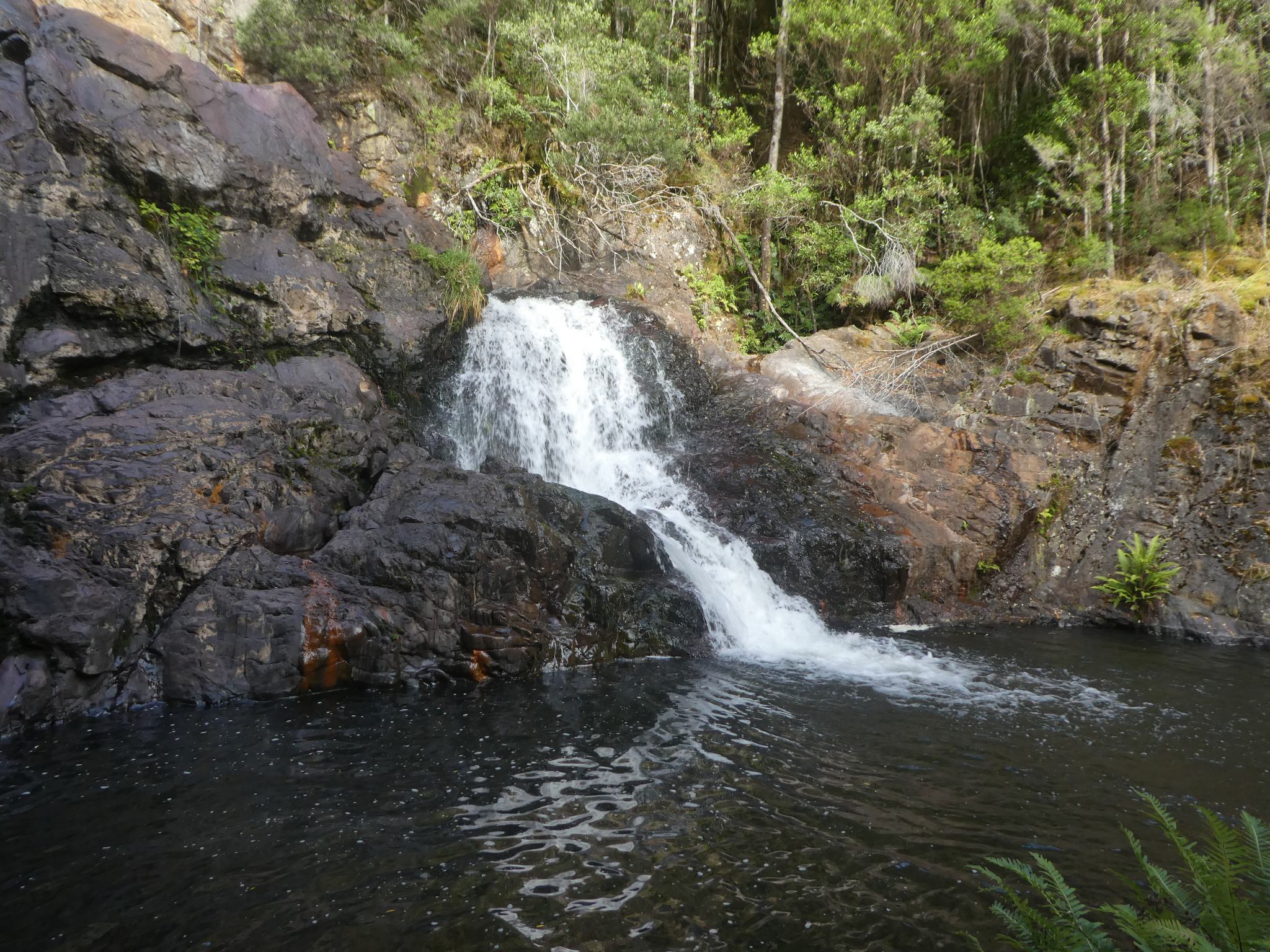 From there it’s necessary to back track to the power station and to the fork above, and then it’s a well maintained track of gentle gradient which loops back up, emerging on the eastern side of the town.  It is about 5km in total, easily done in a couple of hours, and to avoid the ‘closed’ section it would be easy enough to do this as an ‘in and out’ walk from the eastern side.

About 10kms from Waratah, on the upper reaches of the Arthur River, is Philosopher Falls, named for James “Philosopher” Smith, the explorer and miner who first discovered tin in the area in 1871.  After much effort, he was able to establish mines, which led to the whole area being opened up.  He could have ended up a very wealthy man, but history rather than luck was on his side.  He sold out his mining interests for little profit just a few years before Mount Bischoff mine became one of the richest tin mines in the world.

The track to the falls was the beneficiary of a $1m upgrade in 2010 which makes it an easy 2km walk to the top of the falls.  It actually follows a water race built to supply water to Magnet Mine, which operated nearby from 1894 until the 1940s.   The rainforest here feels suitably ancient. 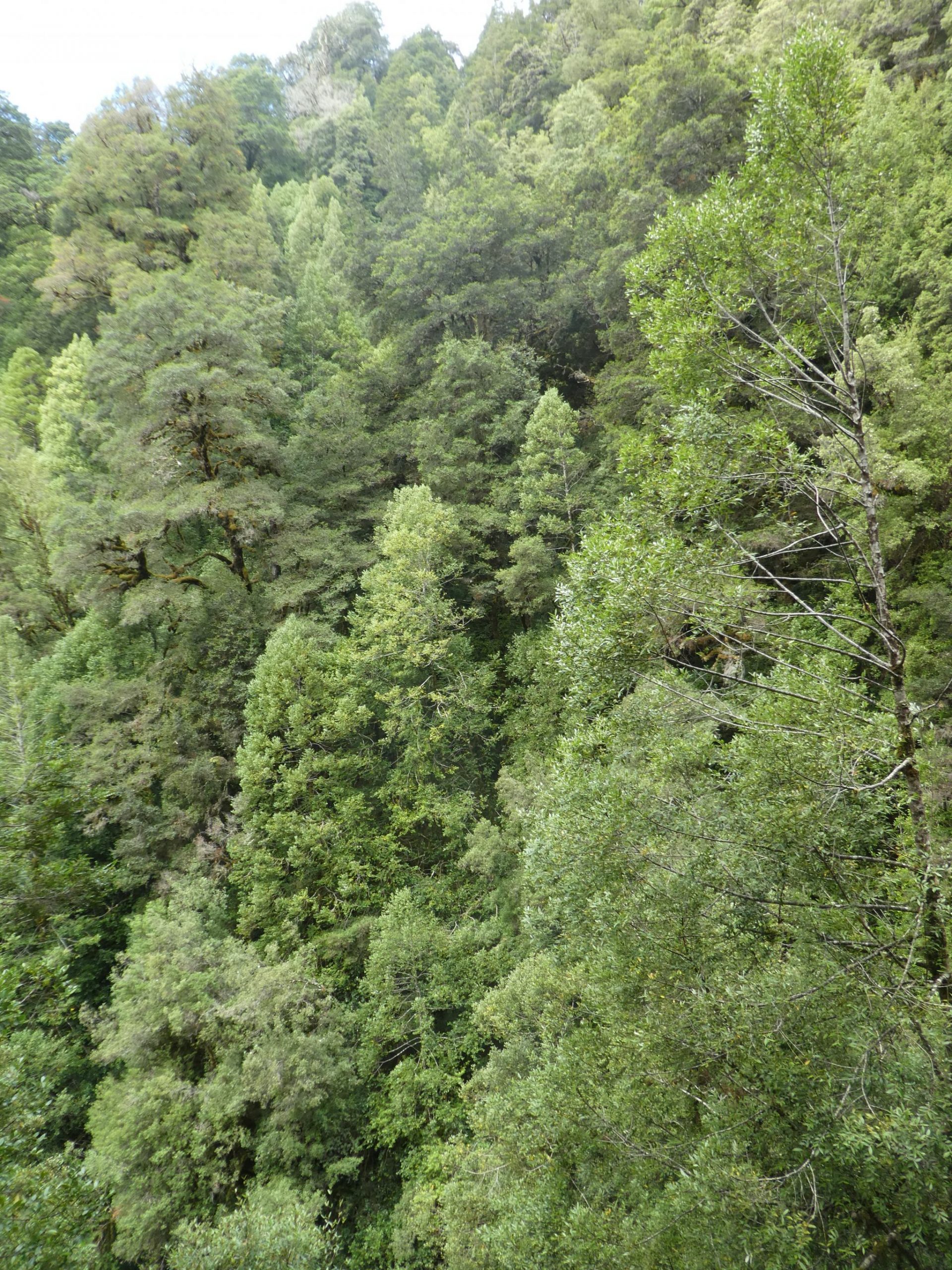 After crossing a foot bridge installed as part of the track refurbishment, it’s then 210 steps down to the base. 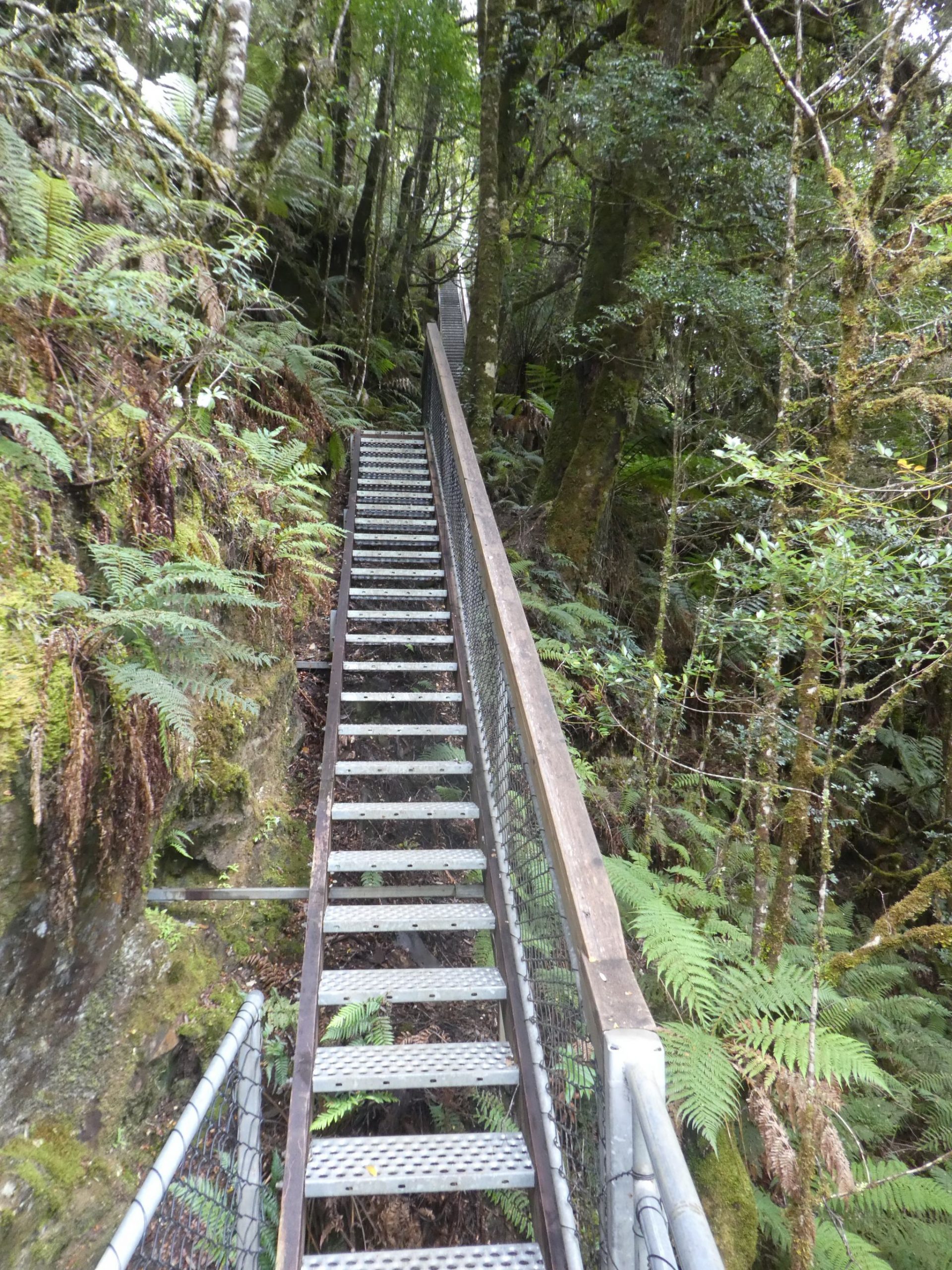 The falls are surrounded by lush forest, meaning photos don’t do it justice.   But it really is beautiful in the flesh. 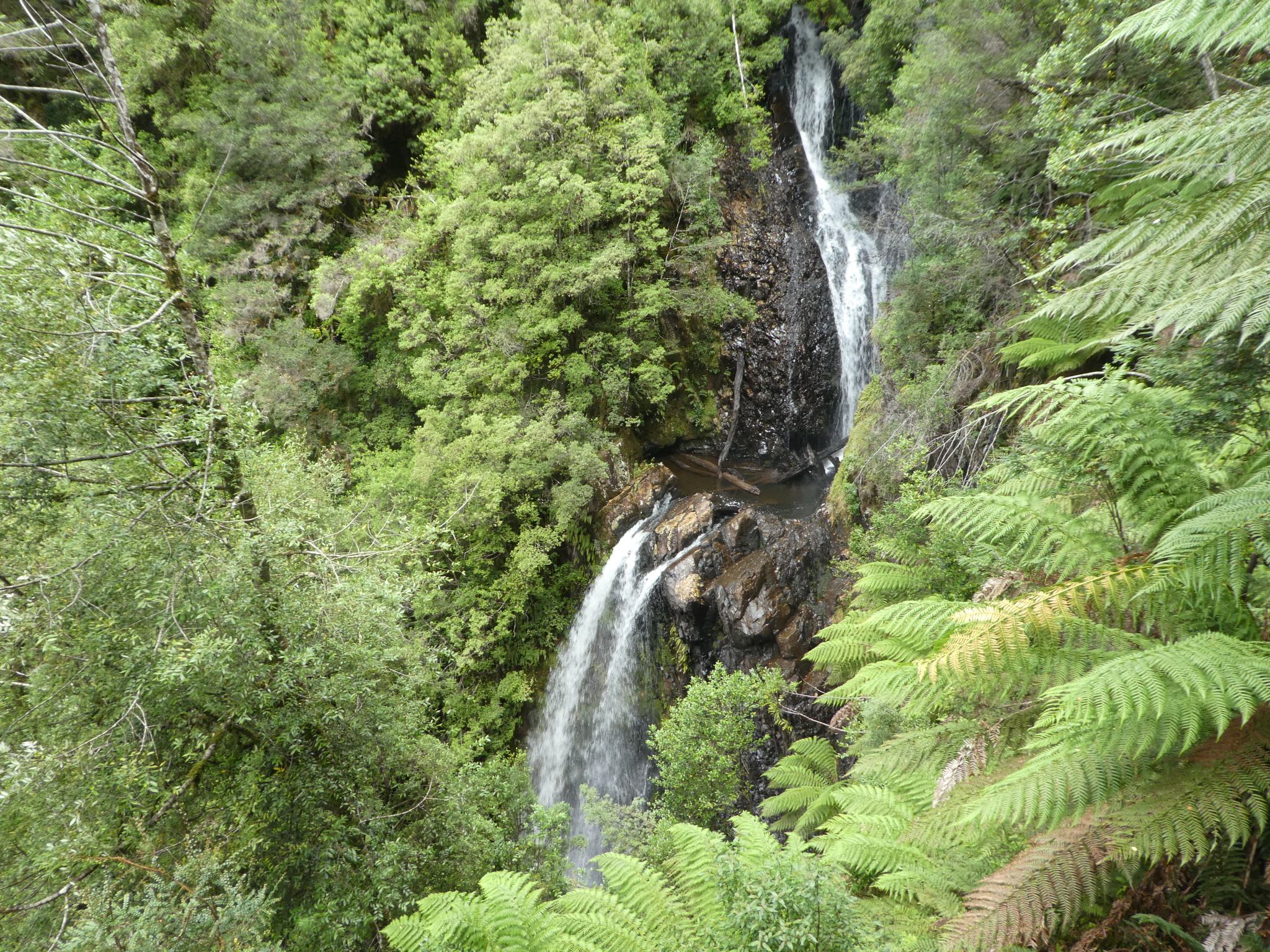 From Waratah it’s about 2 hours drive west through the Savage River Reserve and the small town of Savage River, then over a well graded gravel road towards the coast and into the true heart of the Huon forests of the Tarkine.   3km short of Corinna, there’s a right hand turn onto Norfolk Road.  Note: if coming from the opposite direction it is necessary to use the car ferry to cross the Pieman River at Corinna.  Approaching from Waratah, no river crossing is required.

After crossing the Savage River Bridge, there’s a small car park on the right hand side of the road and a trail marker on the left.   Unhelpfully, there is no sign for Mount Donaldson or sign board for the walk visible from the road.

The trail starts in a dense moss covered rainforest with magnificent ferns. 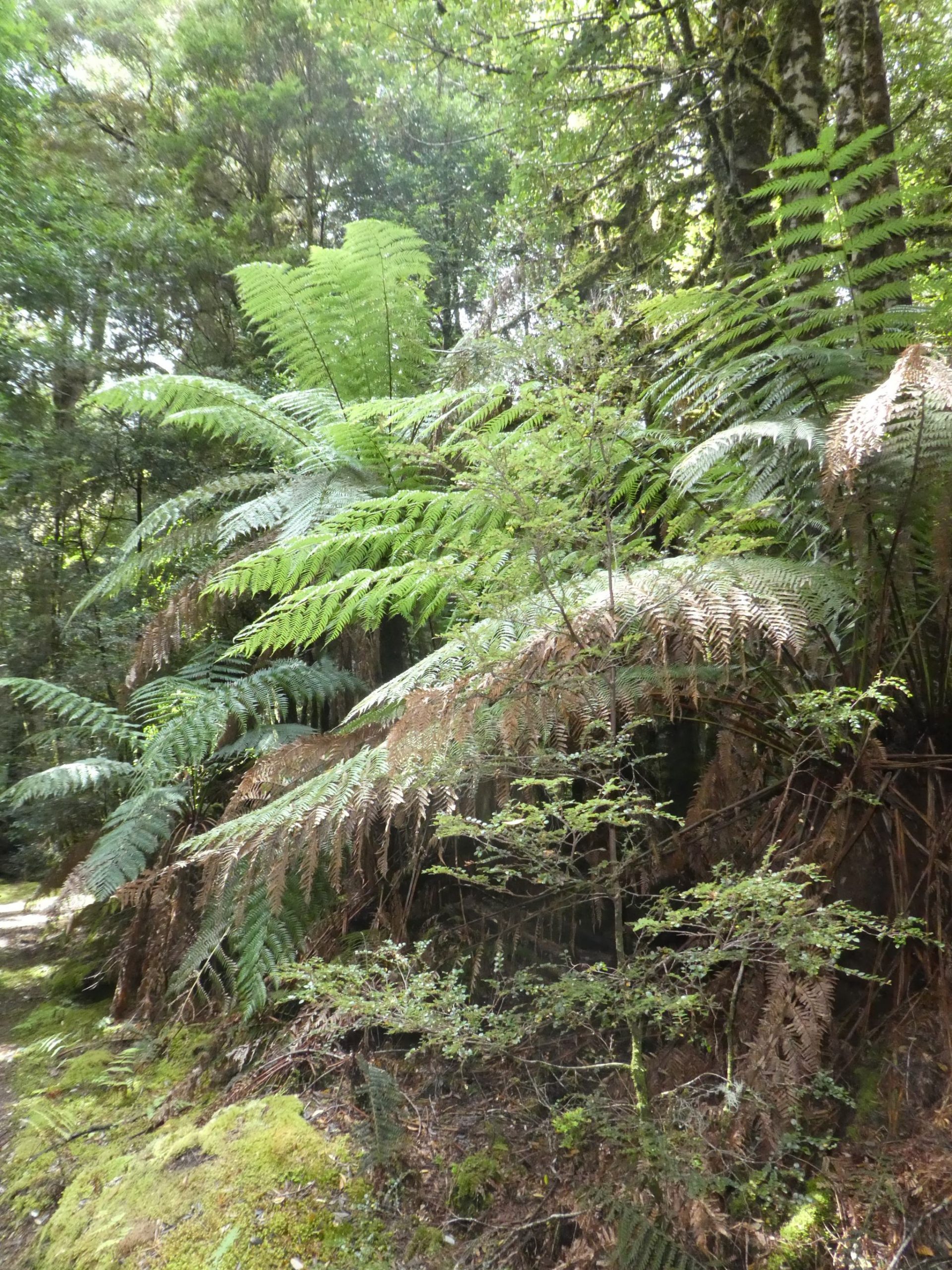 It winds gently upward through this lovely forest for several kilometres and then suddenly clears to buttongrass moorlands. 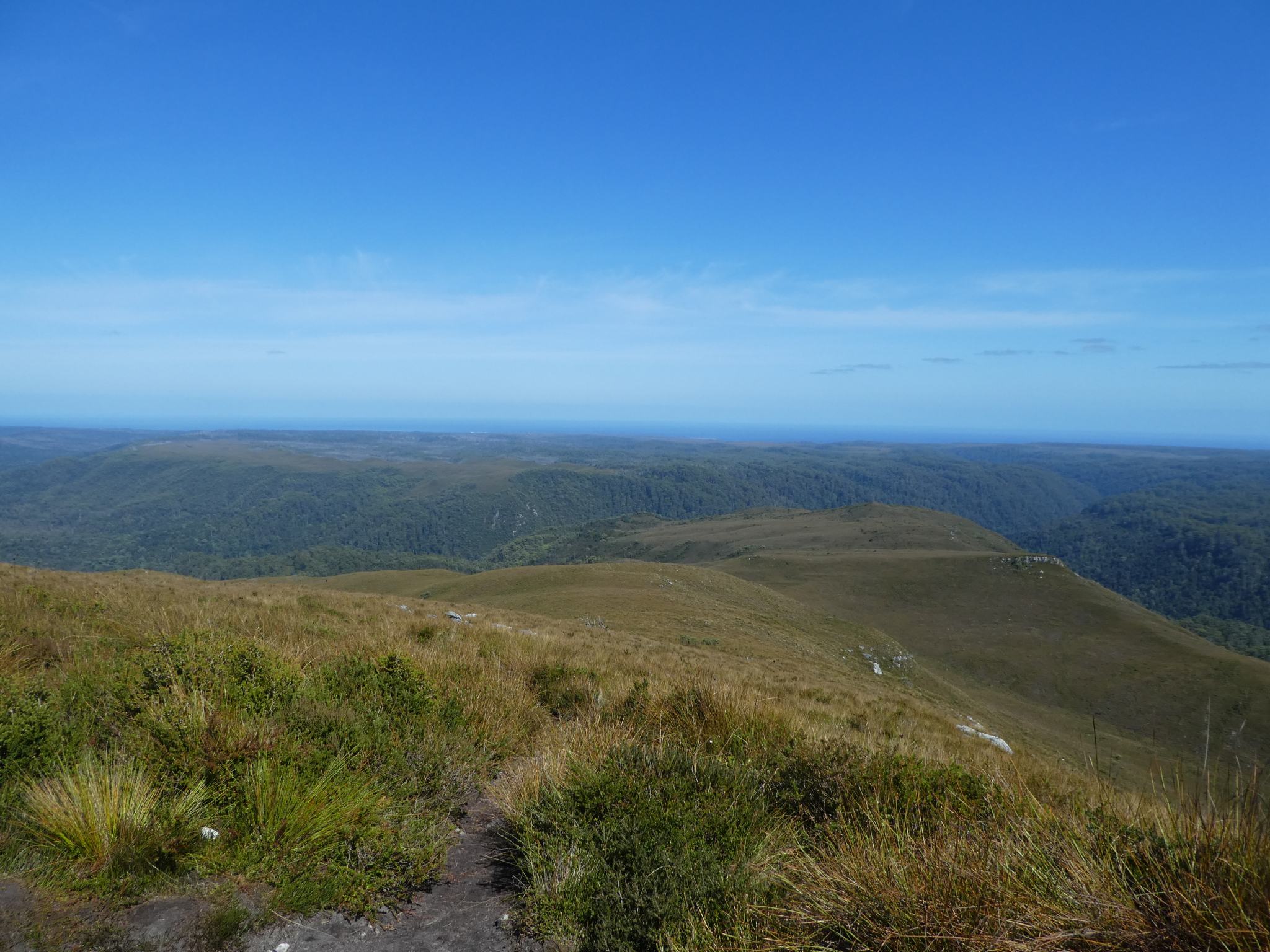 For the next several kilometres, the trail meanders across and gently up the moorland.  The track looks to be permanently waterlogged in some places and there’s plenty of mud.  But the view from the top is amazing.  The peak is only 420m in altitude but the 360 degree, bird’s eye perspective over the virgin Tarkine forest and the mighty Pieman River all the way to the Southern Ocean is truly spectacular. 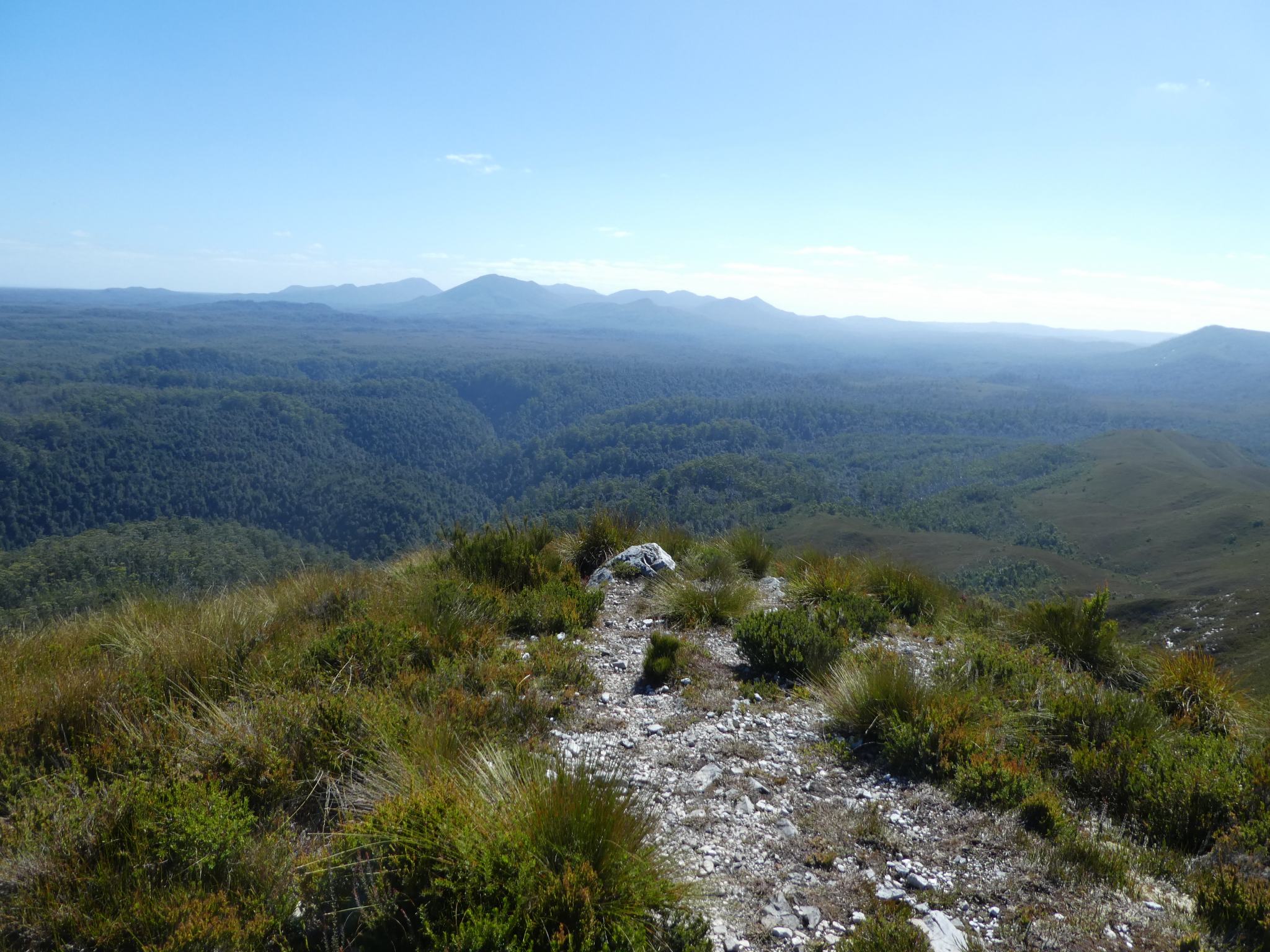 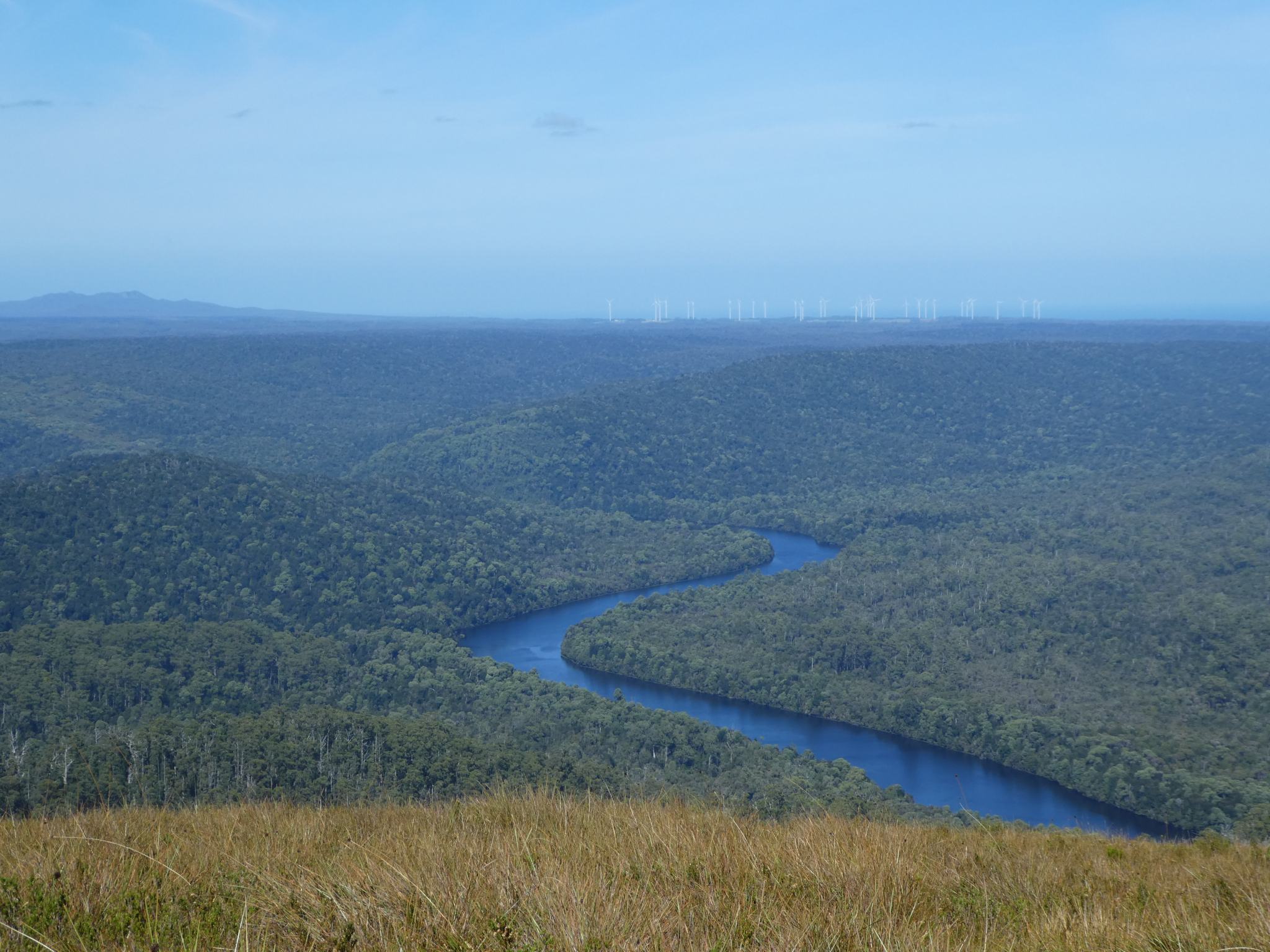 The wind farms in the distance are a jarring reminder of human intervention, but many would say at least less destructive than mining and logging.

Returning to the car park is via the same trail in reverse.  The drive from Waratah and back takes more time than the walk itself, but on a clear day like this, is absolutely worth it.

From Waratah we headed to Stanley, the last major town on the north west coast.  In non-COVID times it’s a well visited tourist town, famous for The Nut, the remains of an extinct volcano which towers over the town. 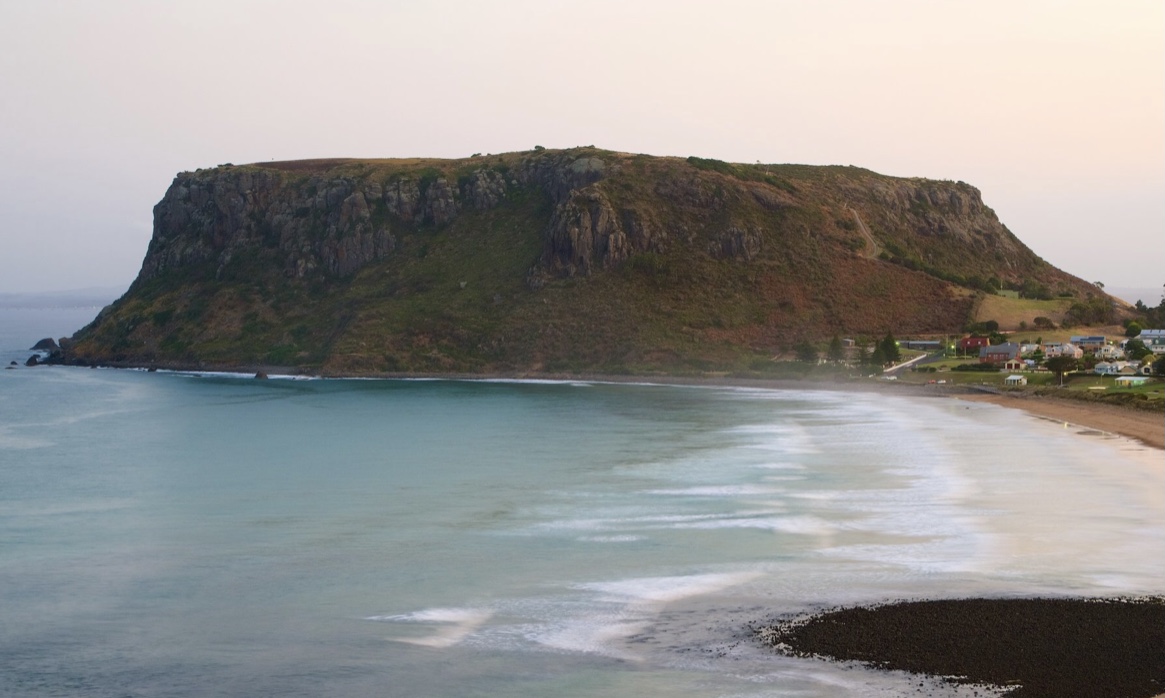 Stanley is a lovely town, settled in 1826 as a port for the farming and fishing industries being established in the north west.  It has such a tidy collection of well preserved colonial era buildings and picturesque port that the movie version of The Light Between Oceans, a story about a lighthouse keeper and his family set during the inter-war period, was filmed here in 2014.  So much happens in Stanley that billboards about the town’s location shots for the film are still on display!

It’s also the birthplace of Joseph Lyons, the only Tasmanian to hold the office of Prime Minister of Australia.  He was also the first Prime Minister to win three federal elections, and the first to die in office.  The modest little house where he grew up is now a small museum.

But we came to see the far north west coast, where the Tarkine Reserve joins the 100,000 hectare Arthur Pieman Conservation Area, itself an extraordinary conservation resource.

There are lots of recreational tracks and walks as well as camping and some shack accommodation at Arthur River.  We only had time for one walk, but it was a beauty.  By pure luck, we’d left the best for last.

We started at the Bluff Hill Lighthouse and basically just followed a patchwork of old 4WD tracks and walking tracks shadowing the coast. 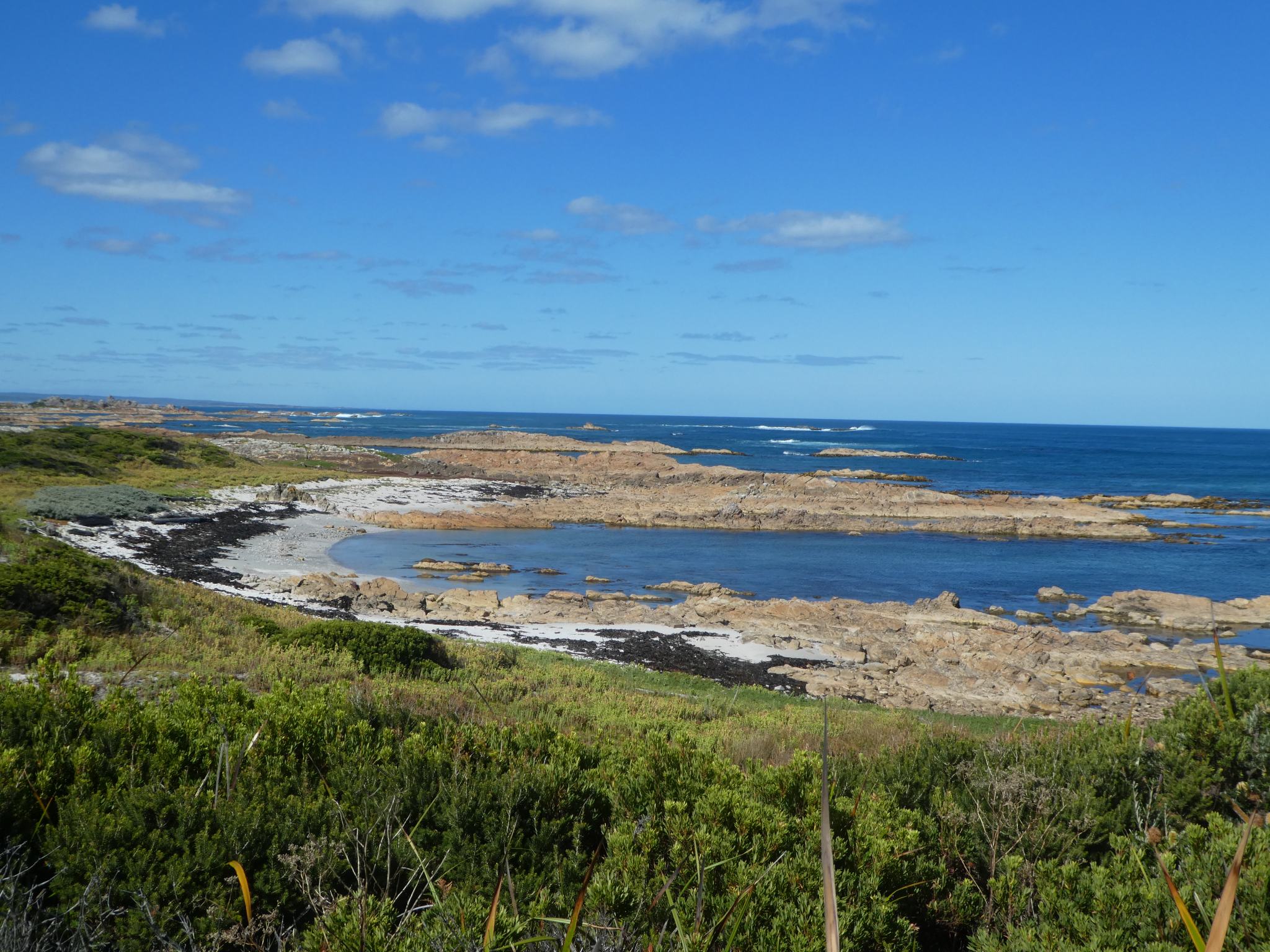 The rock formations on this coast are incredible and we had the best possible sunny day to enjoy them. 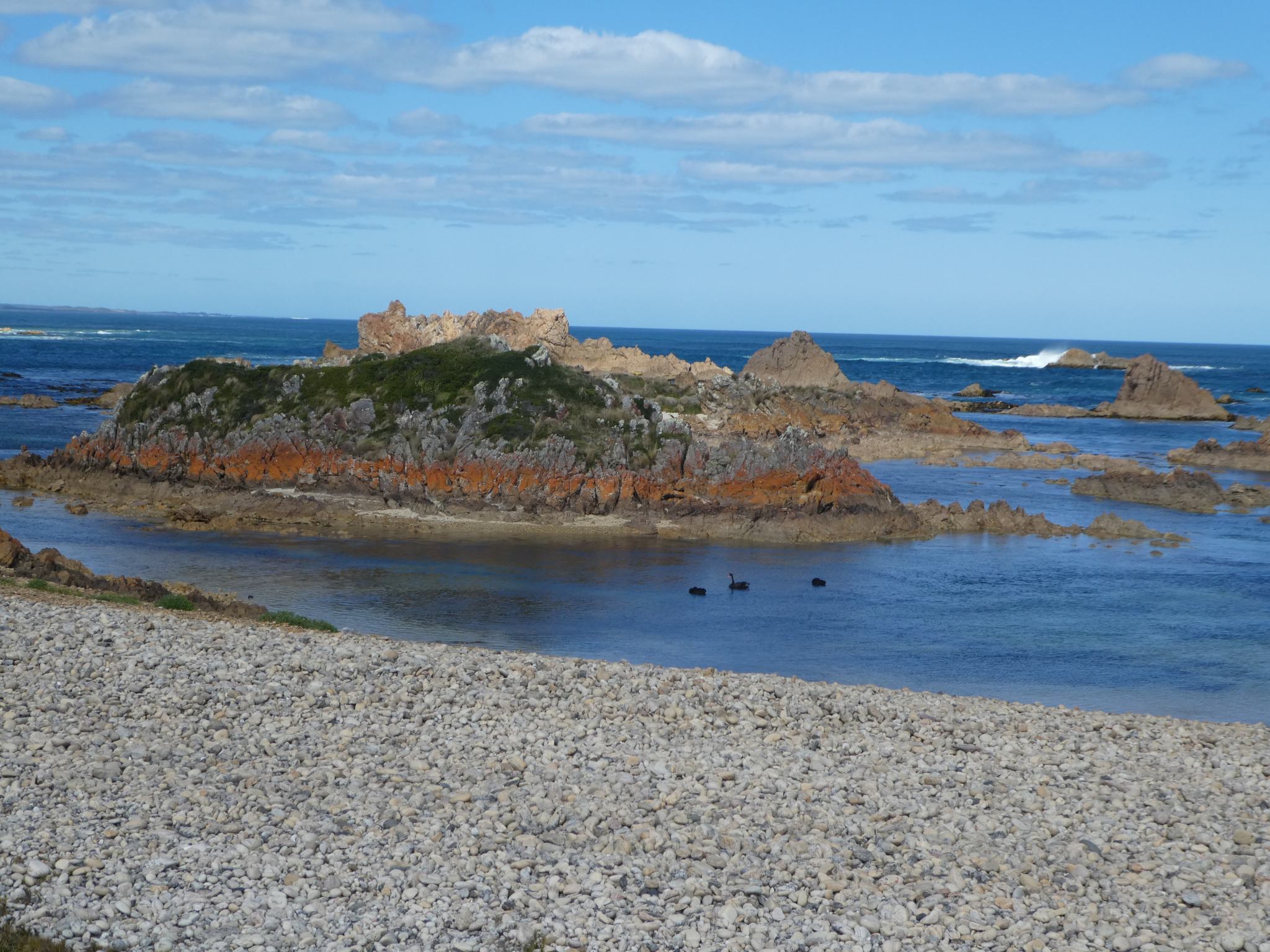 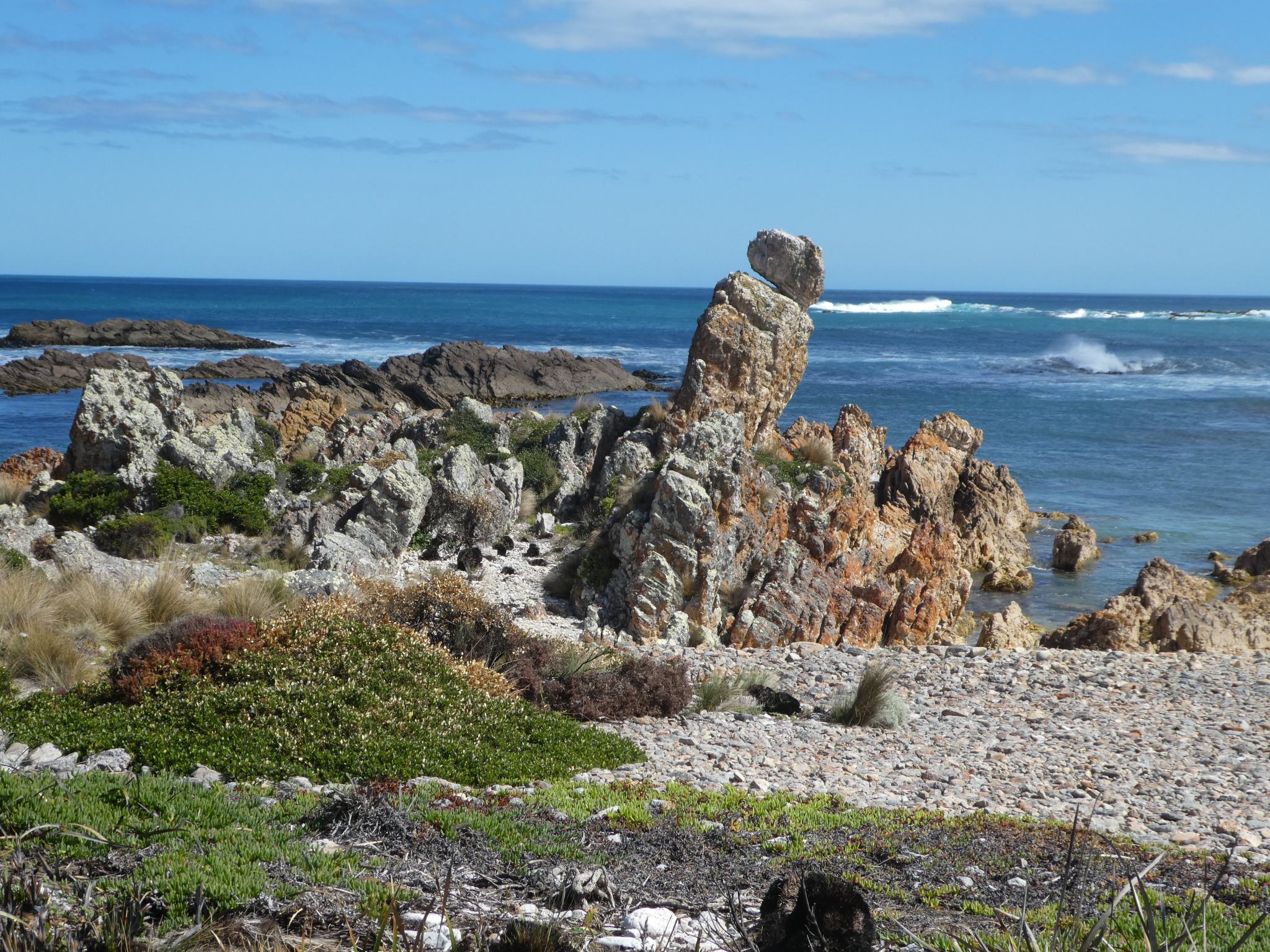 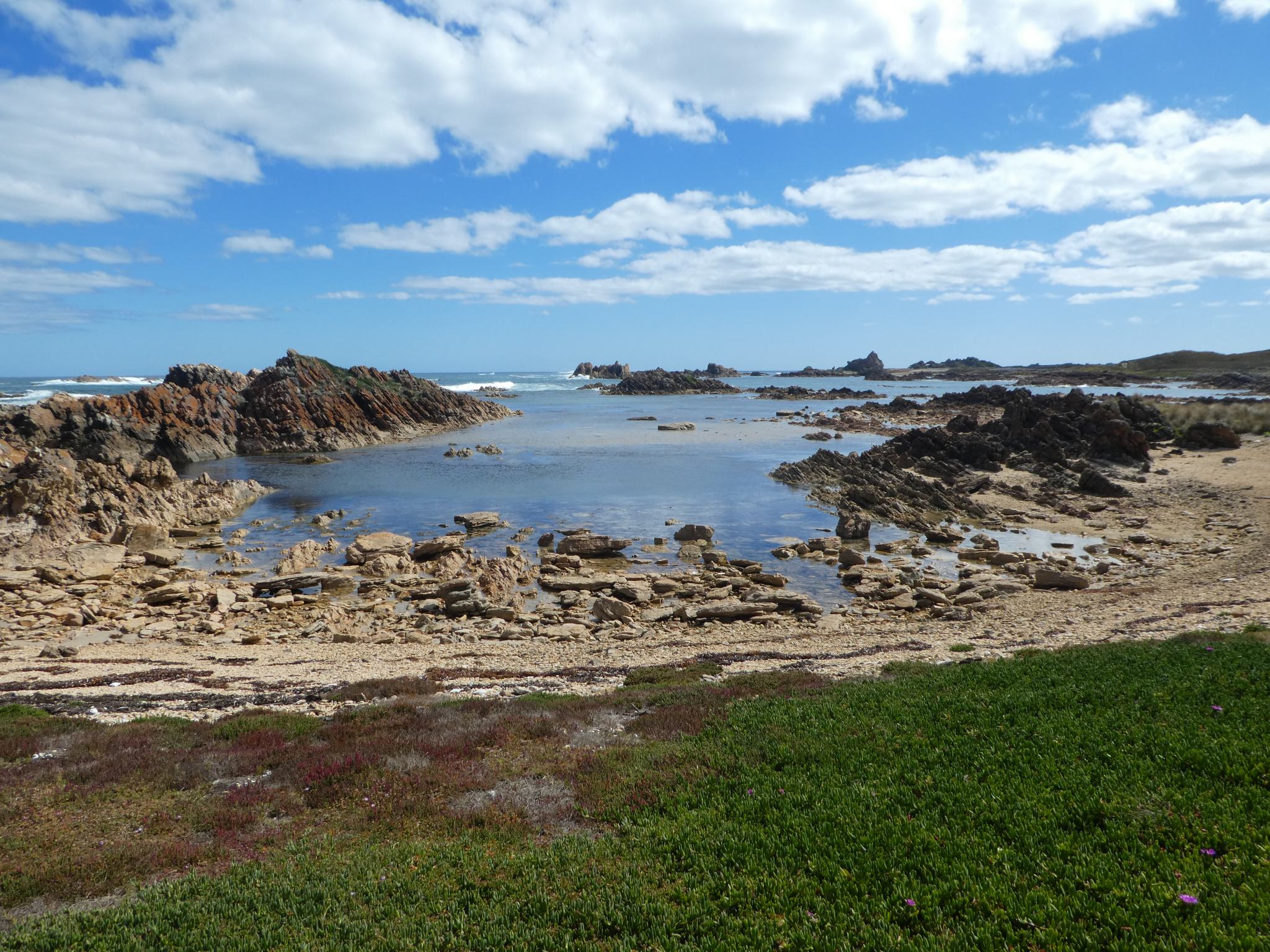 From here to Argentina it’s 18,000 kms, the longest uninterrupted expanse of ocean on the planet.  The currents known as the roaring 40s send massive waves crashing along this coast. 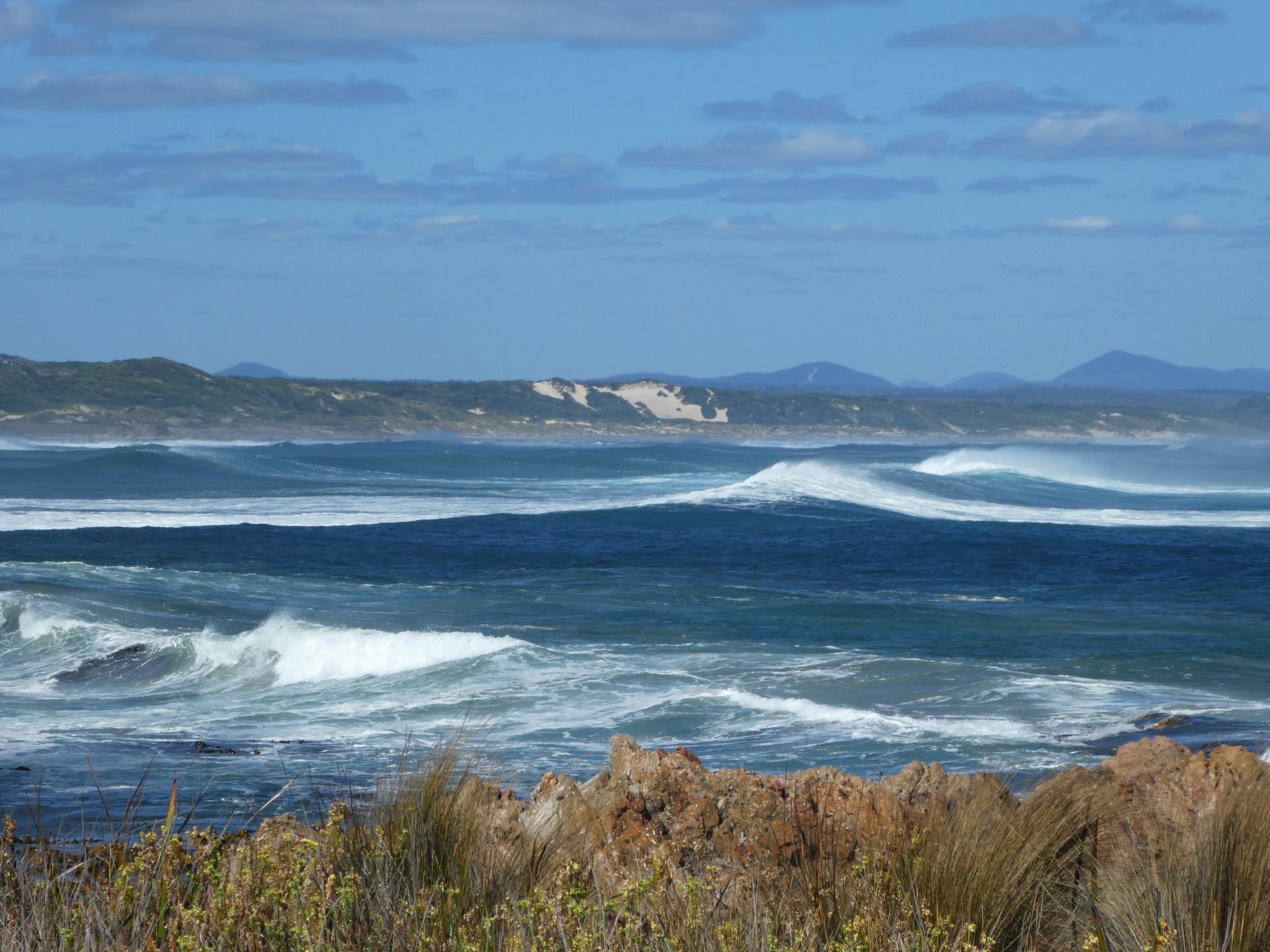 Tasmanian poet, Brian Inder referred to this coast in one of his poems as ‘the shore of eternity’ and ‘the edge of the world’.  Apt words for this wild place.  We certainly ended our Tassie trip on a high.