Kangaroo is Australia’s third largest island after Tasmania and Melville Island.  145 kms long and 54km across at its widest point, it sports 540km of rugged coastline.

It was separated from the mainland by rising sea levels at the end of the last glacial period, approximately 10,000 years ago.  Archeological evidence confirms an indigenous population once lived here but by the time Europeans arrived in 1802, the island had been uninhabited for at least 2,000 years, possibly much longer.   In the language of the local mainland indigenous Kaurna people, it is Karta Pintinnga, which literally translates as ‘Island of the Dead’.

Nowadays it’s home to a permanent population of around 5,000.  Approximately one quarter of  the island is national park, with the remainder predominantly devoted to sheep farming and other agriculture.  There are several wineries, a gin distillery, a eucalyptus oil distillery, tourism operations and a couple of low key towns.

In December 2019/January 2020, bushfires destroyed 52% of the island, including 96% of the island’s iconic Flinders Chase National Park.  Thousands of hectares of native habitat were lost and the images of scorched land and suffering animals which made news across the world are hard to forget.

But nature is tenacious and now, just over a year later, the signs of recovery are promising.  More than just green shoots, there is real evidence of regrowth. 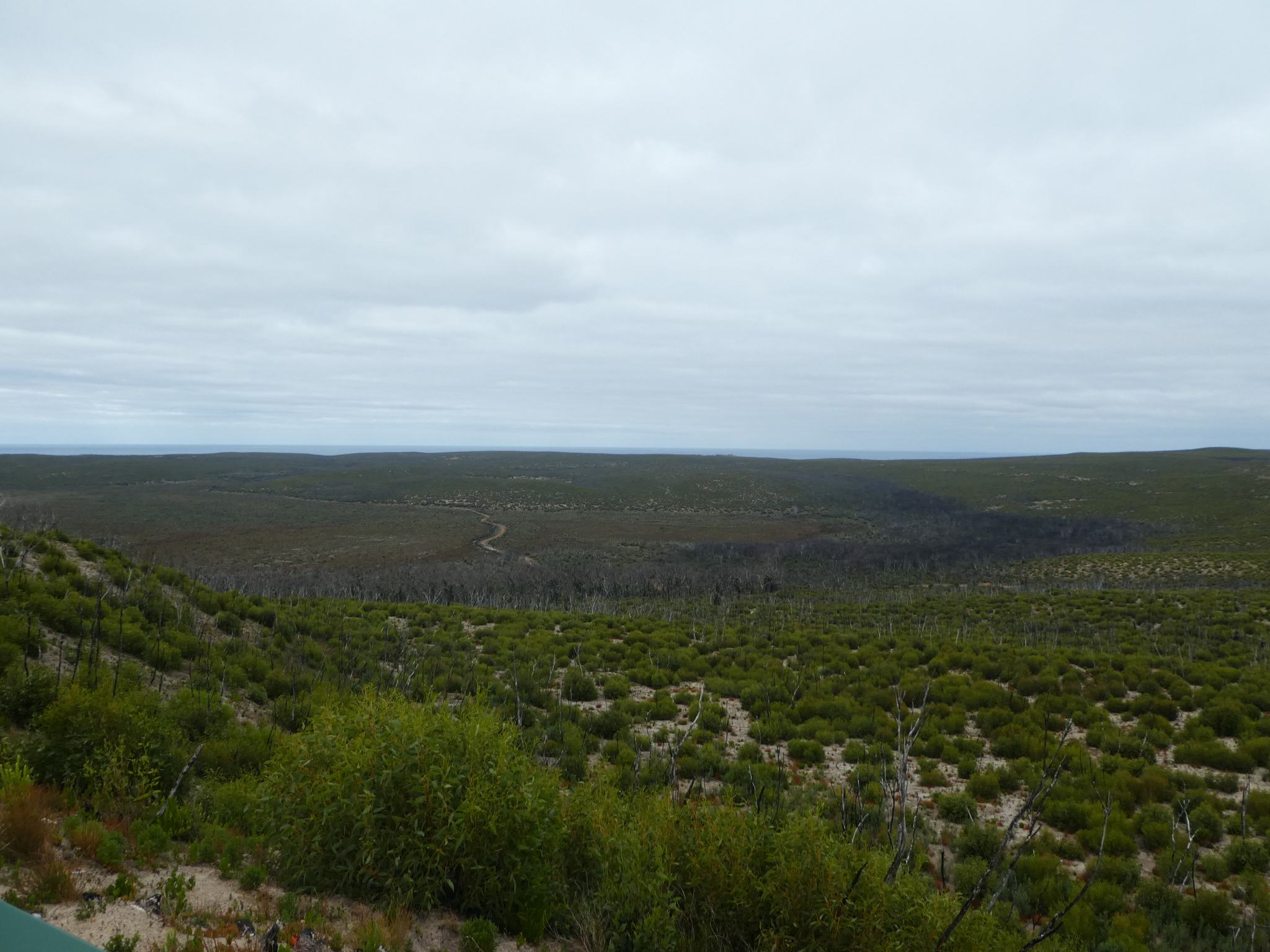 At the far northwestern point of the island, Cape Borda Lighthouse, built in 1858 is South Australia’s third oldest remaining lighthouse and the only square stone lighthouse in the state.   It was not damaged in the fires.   Signboards describing the life of the lighthouse keepers and their families in the 1800s and 1900s facilitate a self guided trail around the old light station settlement. 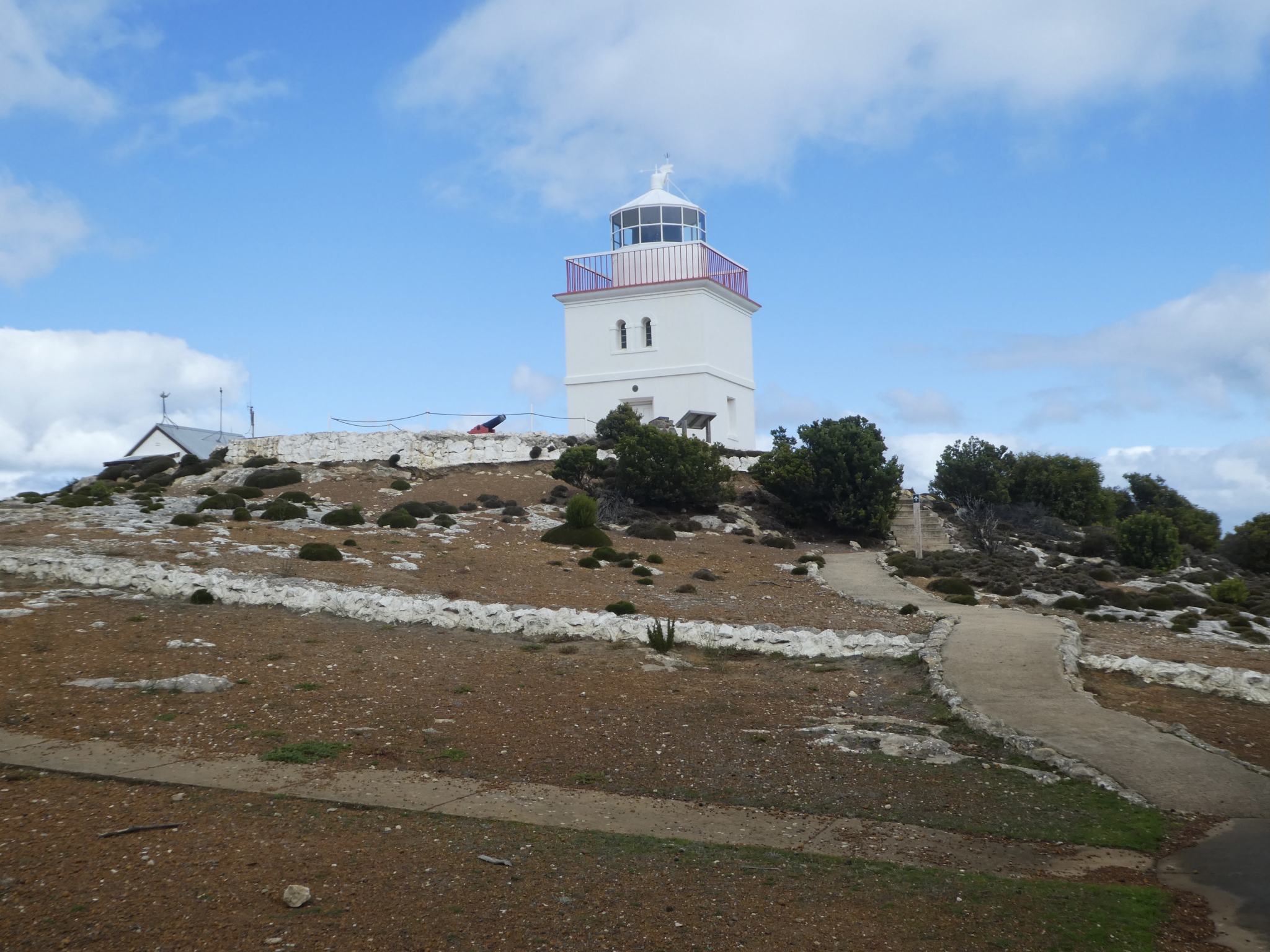 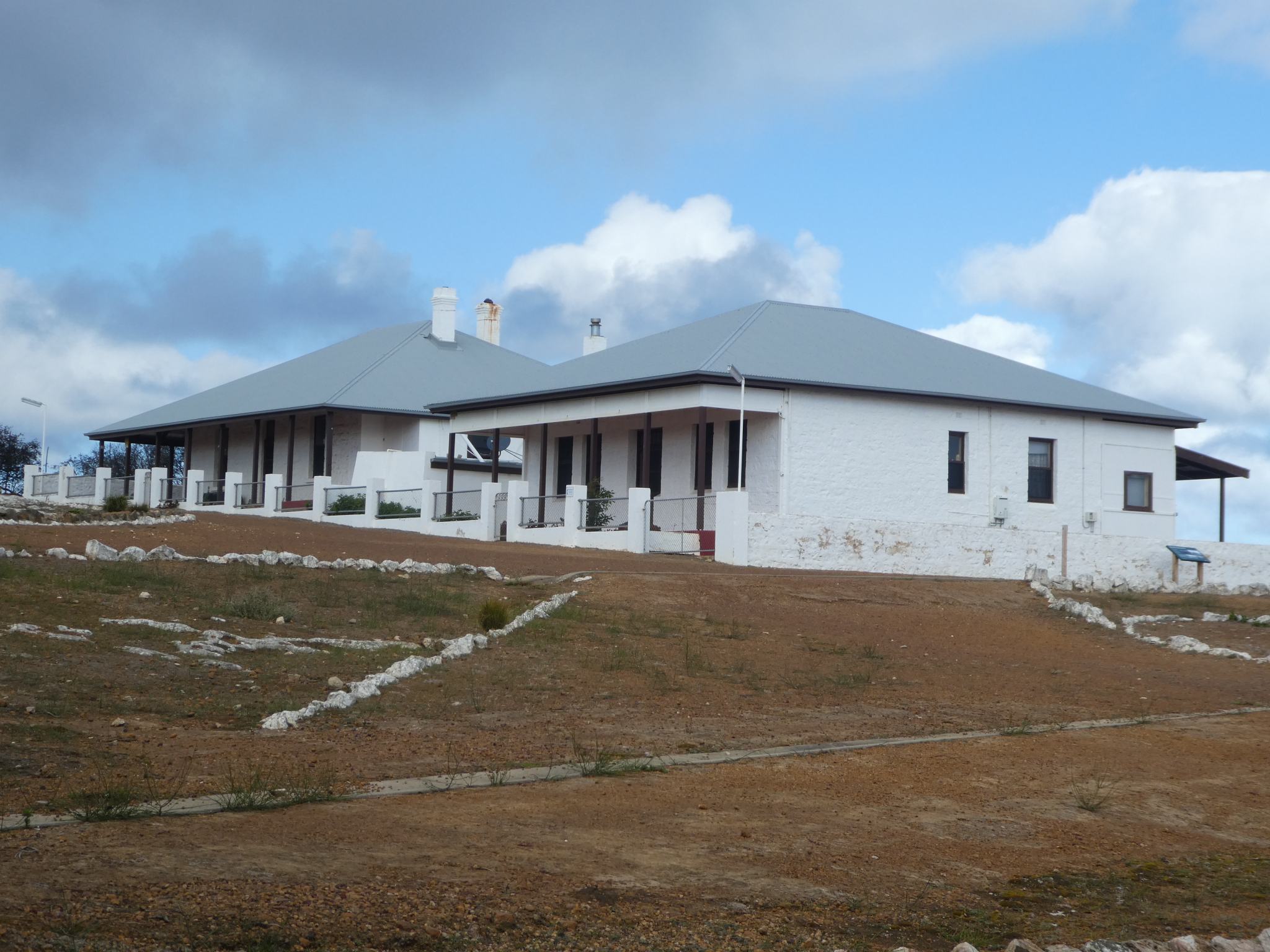 The bushfires destroyed most of the surrounding area and the long walking trails which were previously available here are still closed, but vegetation is regenerating naturally and a shorter hilltop trail has been improvised for access along the cliffs. 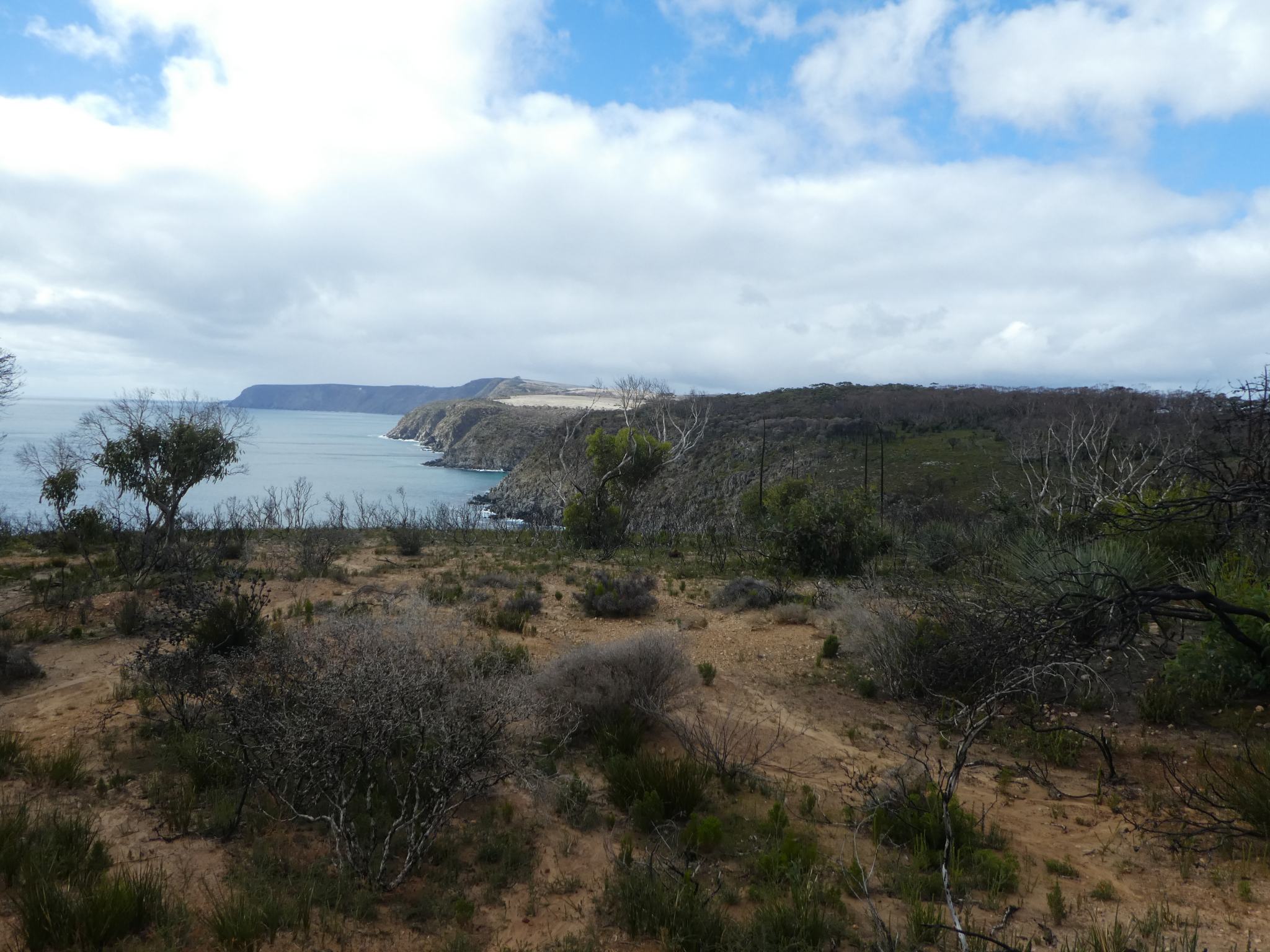 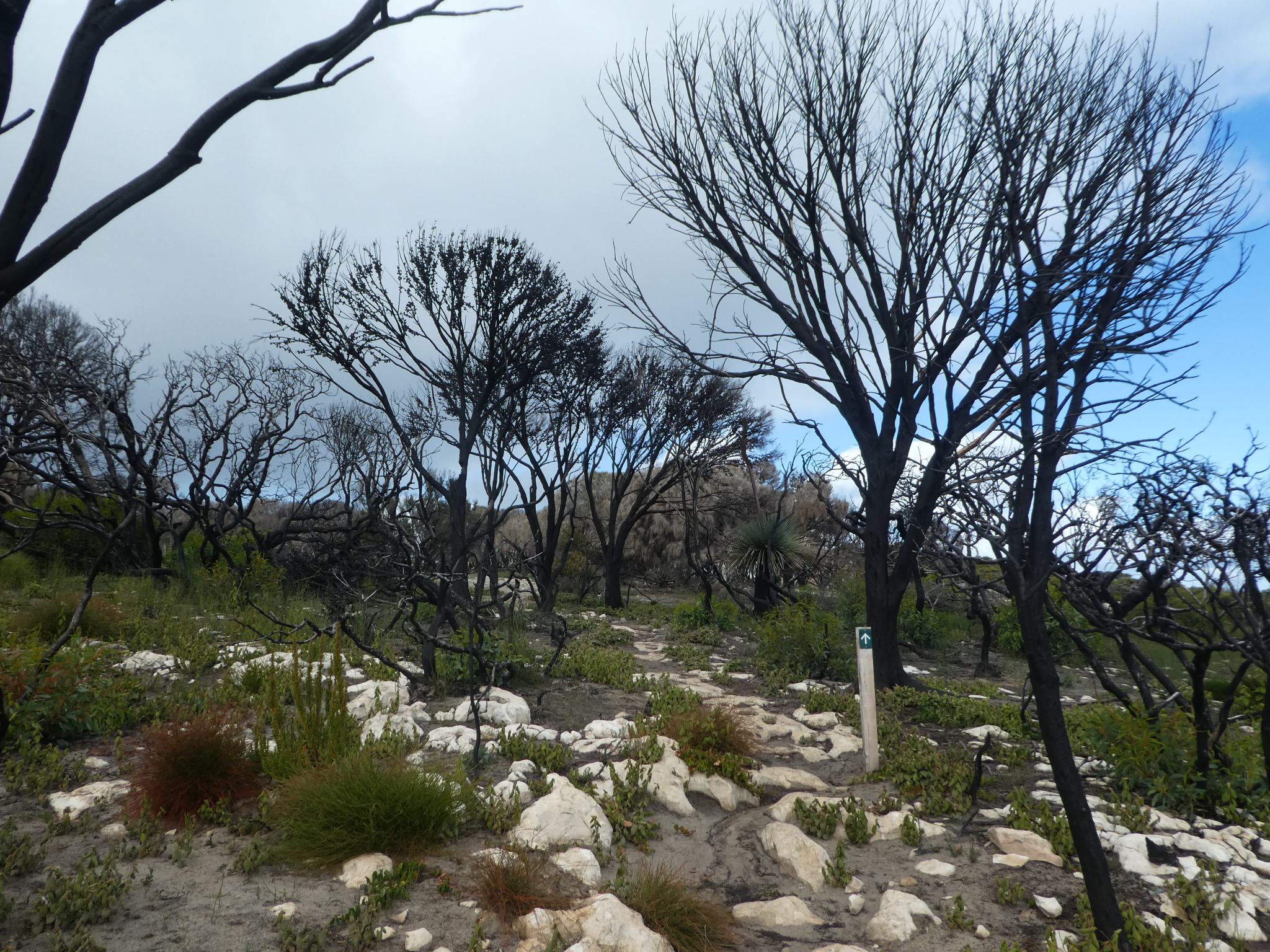 On the south coast, the visitors centre and boardwalk overlooking Seal Bay are fully operational. 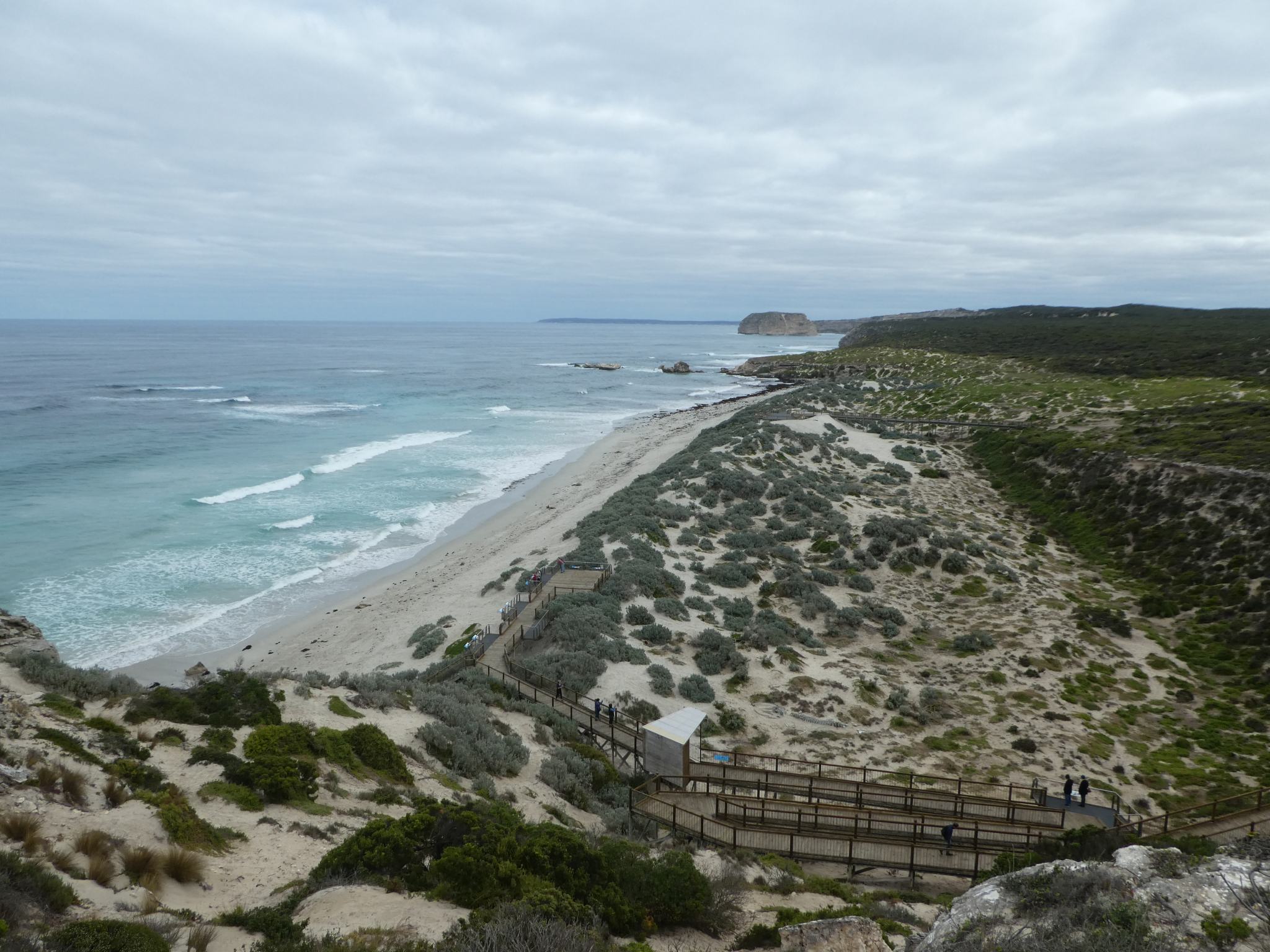 But you won’t see any ‘true’ seals here.  The beautiful marine creatures lazing on the beach are sea lions. 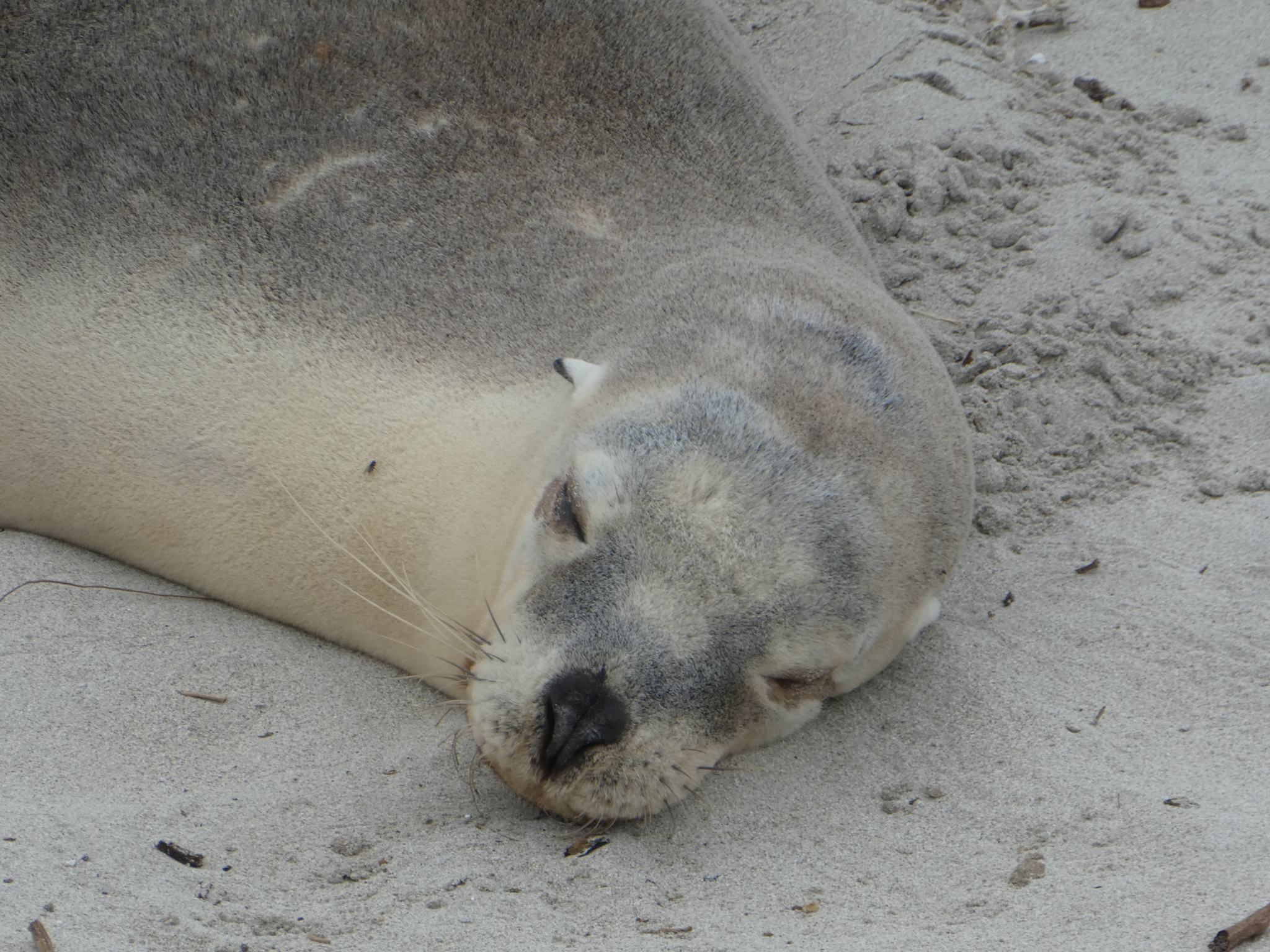 The difference, apparently, is in the ears and flippers.  Seals and sea lions, together with walruses, belong to a classification of mammals known as pinnipeds, which is Latin for ‘fin footed’.  ‘True’ seals have no external ear flaps and can’t use their hind flippers on land.  Think leopard seals and elephant seals.  Sea lions and fur seals together comprise a seperate subgroup as both have visible ears and their back flippers are longer and can be rotated to help ambulate on land.  Although sometimes called ‘earless seals’, in scientific terms neither are ‘true’ seals.  So even a fur seal isn’t a ‘true’ seal.

But even if the name of the bay is misleading, this is an amazing place.  Australian sea lions are one of the rarest species of pinnipeds in the world, thought to number less than 12,000 in total.   Hunted almost to extinction in the 19th century, they are now found only on the southern coast of South Australia and a portion of Western Australia.  Seal Bay has approximately 800 Australian sea lions, the third largest colony in existence. Mums and pups live here year round. 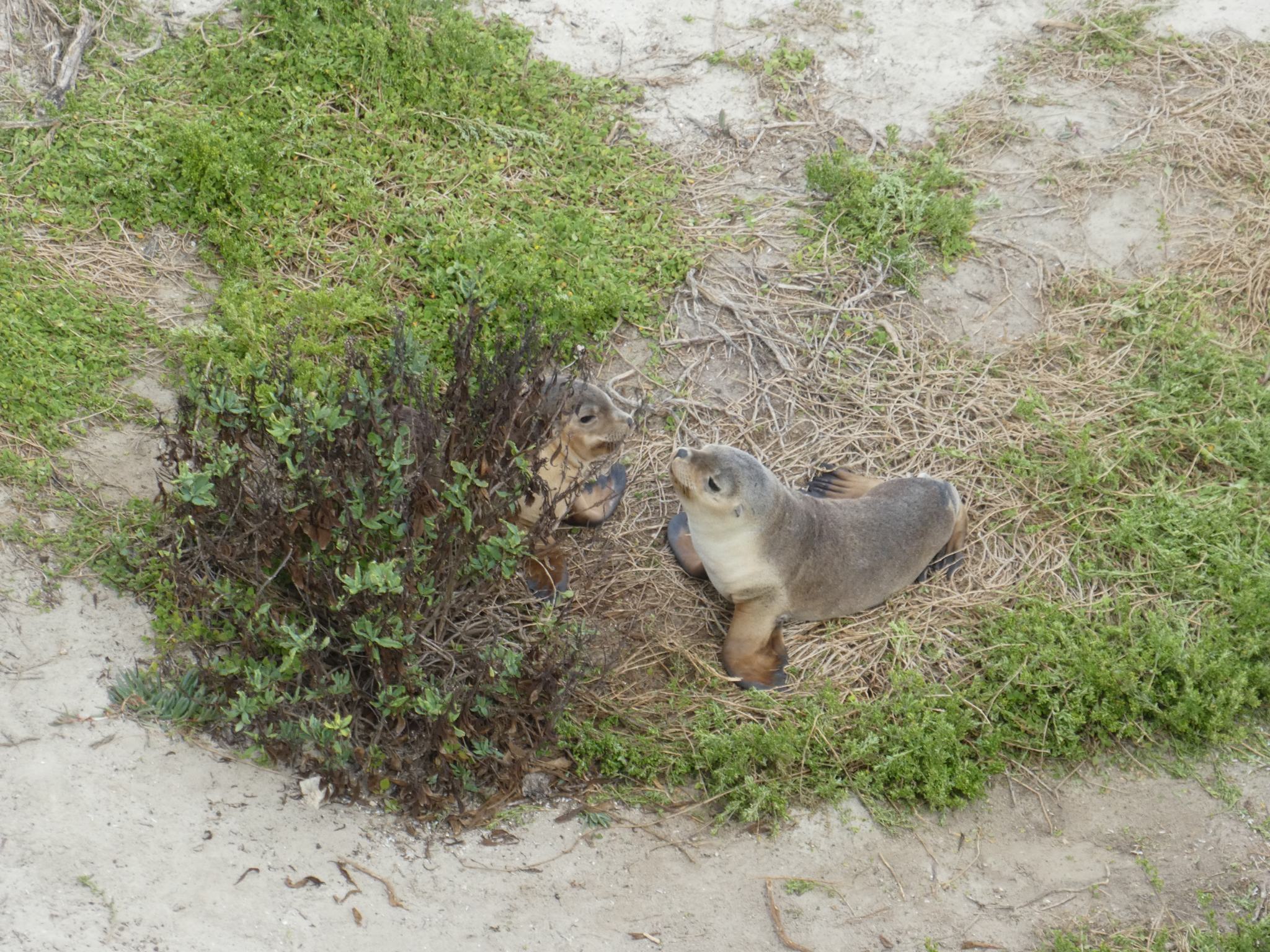 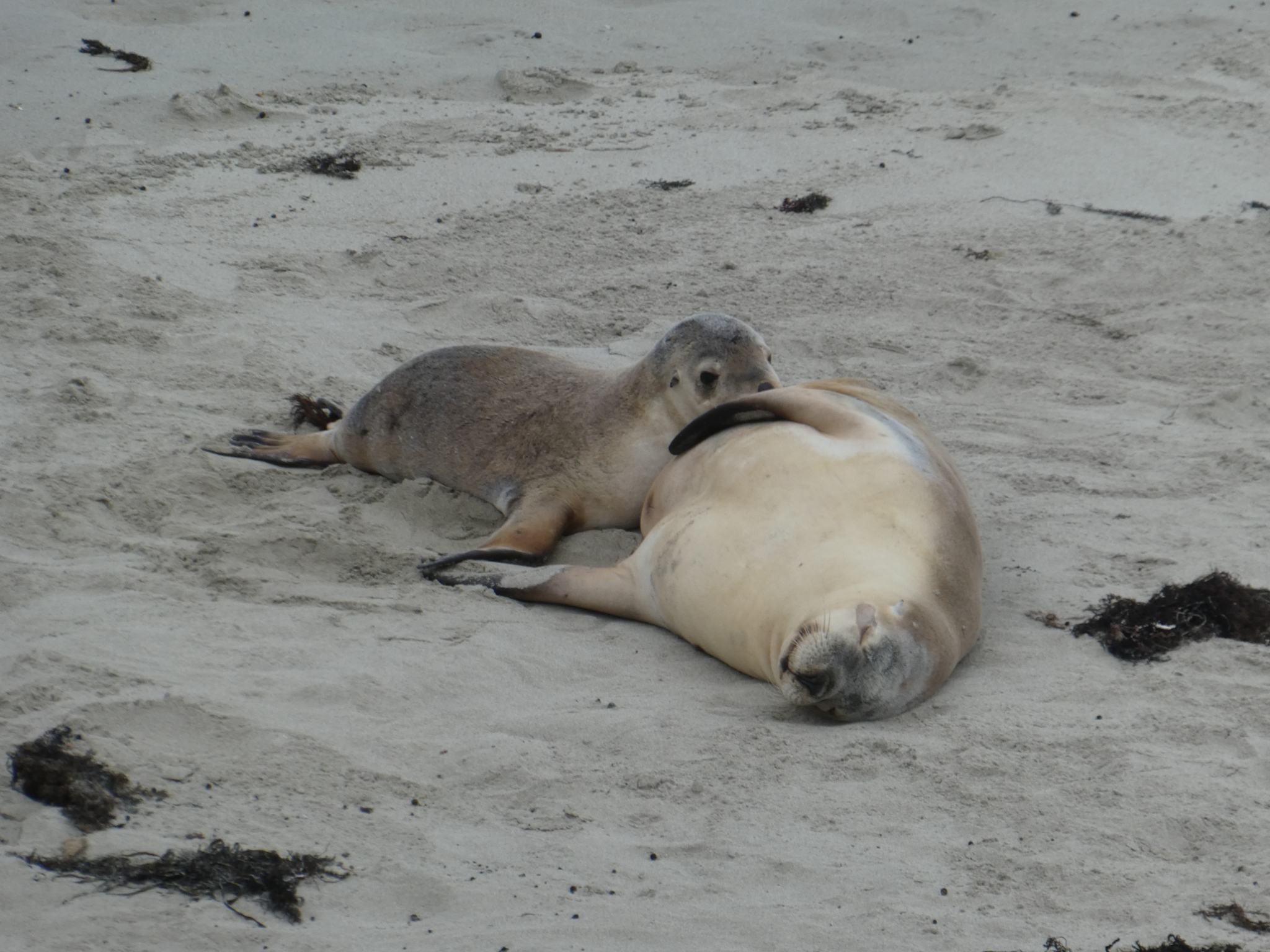 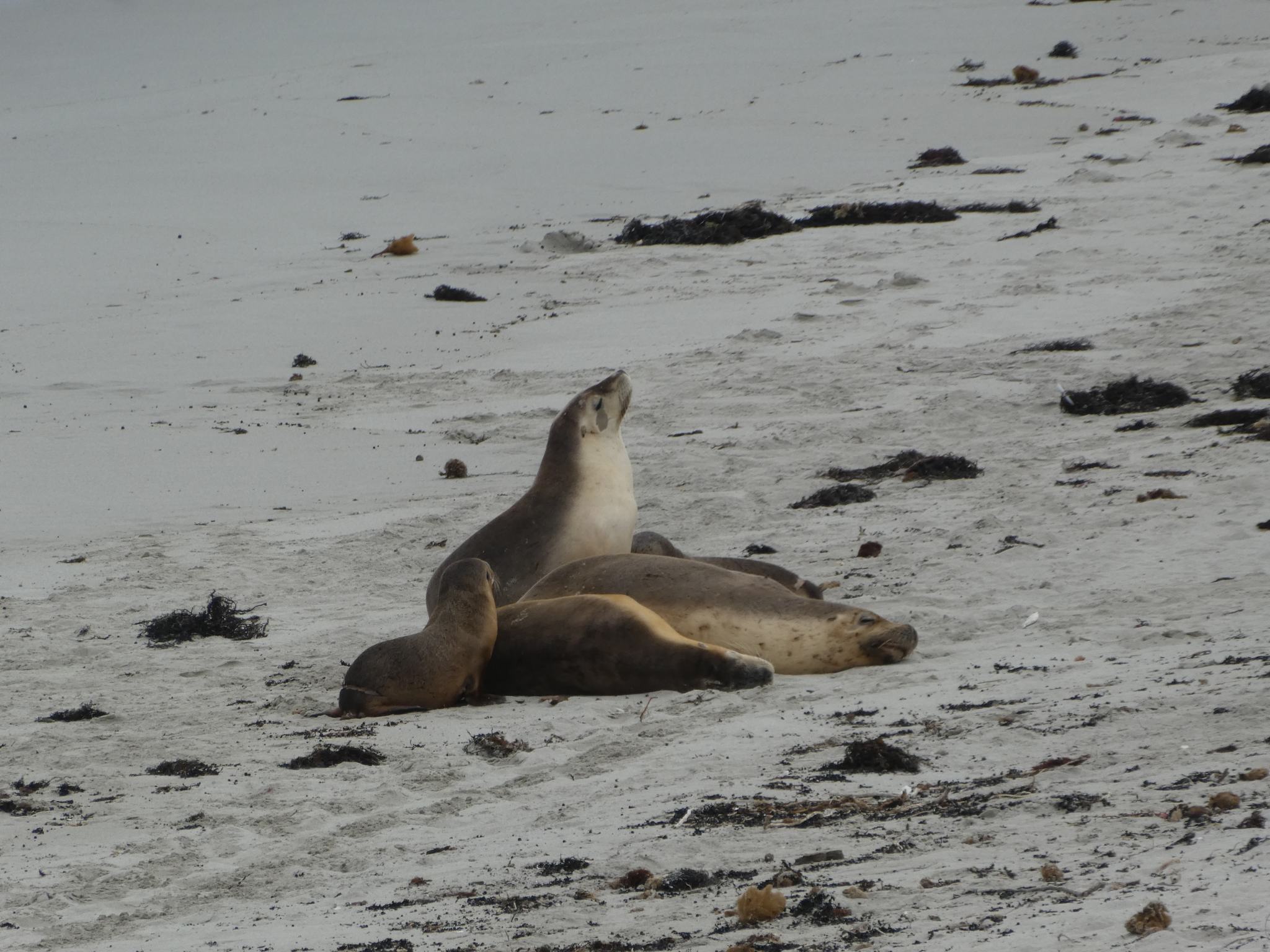 At the western end of the island, Flinders Chase National Park has re-opened following extensive work to clear the roads and rehabilitate walking trails.

Before the fires, the Kangaroo Island Wilderness Trail was a 5 day loop through the park for hikers.  The campsites remain closed and independent walking is not permitted but various sections of the trail can be accessed as day walks through designated tour operators re-badged as the KIWT Fire Recovery Experience.  Perhaps in future the whole trail will open to walk-through hikers again.

In the meantime, independent access has also been re-established to the two most famous sites in the park – Remarkable Rocks and Admirals Arch.

Perched on a bare clifftop 200 metres above the edge of the Southern Ocean, Remarkable Rocks can be seen from many kilometres away. 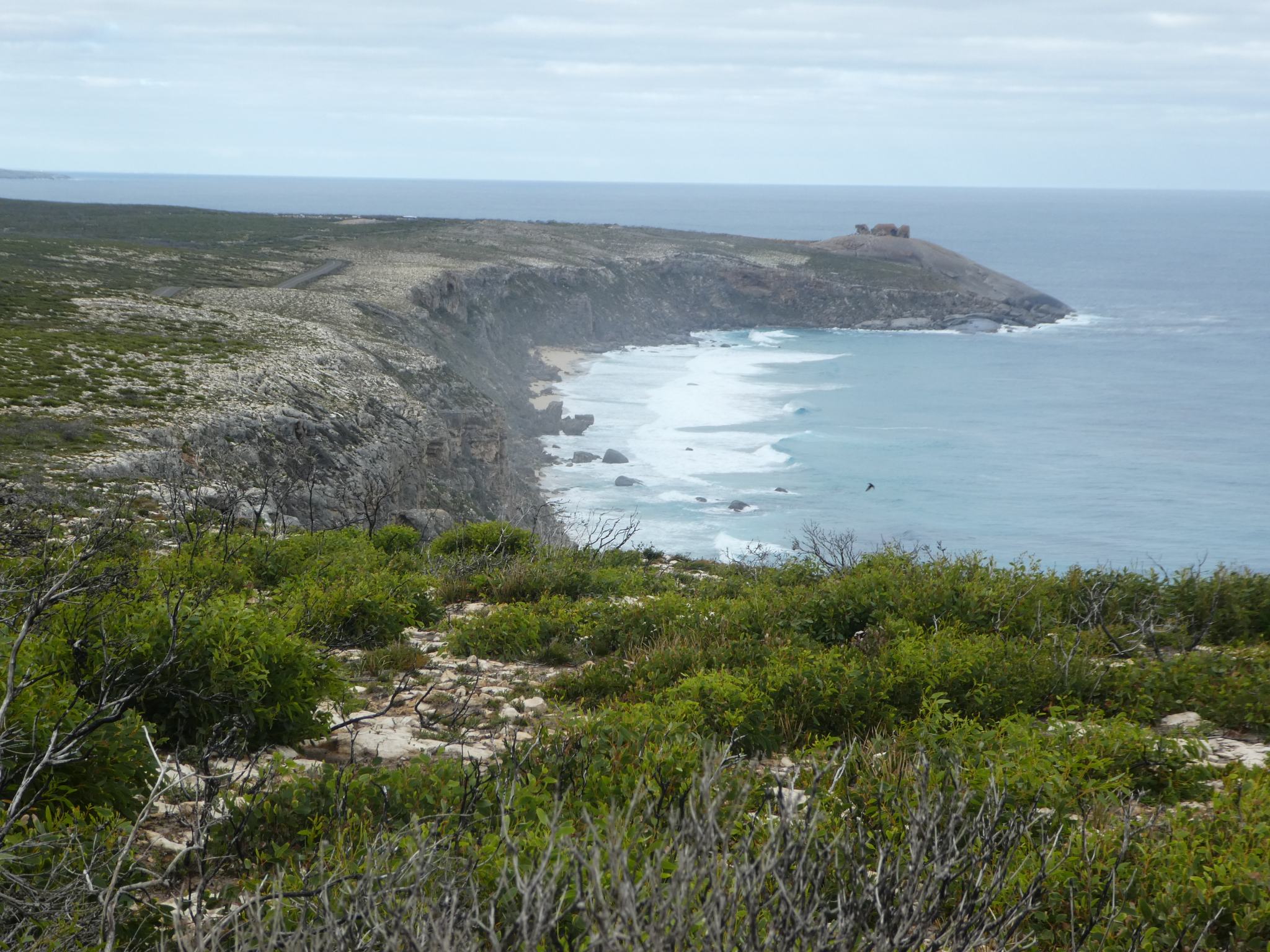 This huge granite outcrop resulted from an underground lava eruption an estimated 500 million years ago.  Since pushing to the surface about 200 million years ago, the once domed rocks have been carved into incredible shapes by sea spray, rain and wind. 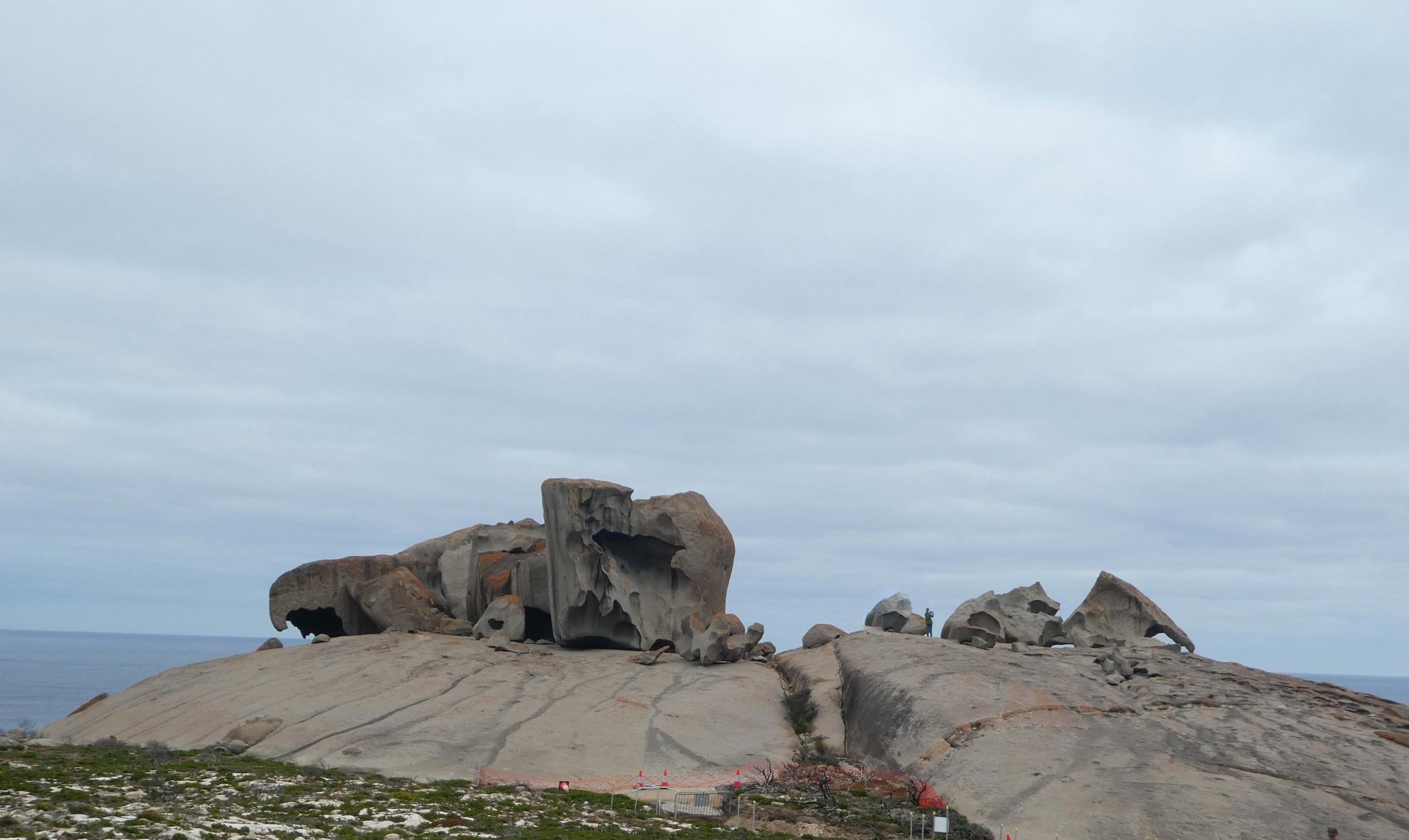 Flecked with black mica, blue quartz and pinkish feldspar, and splashed with orange lichen, they are, well, remarkable. 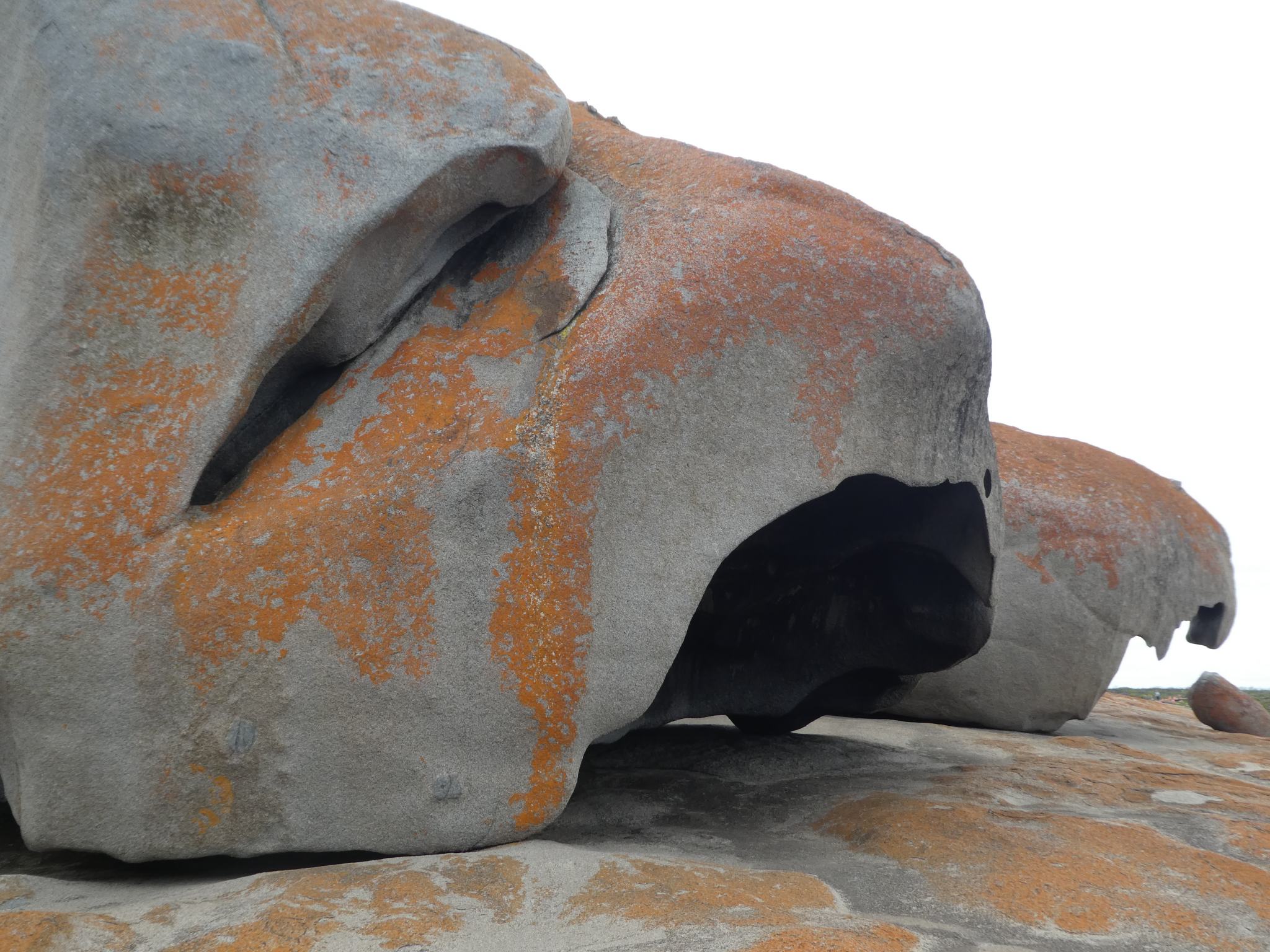 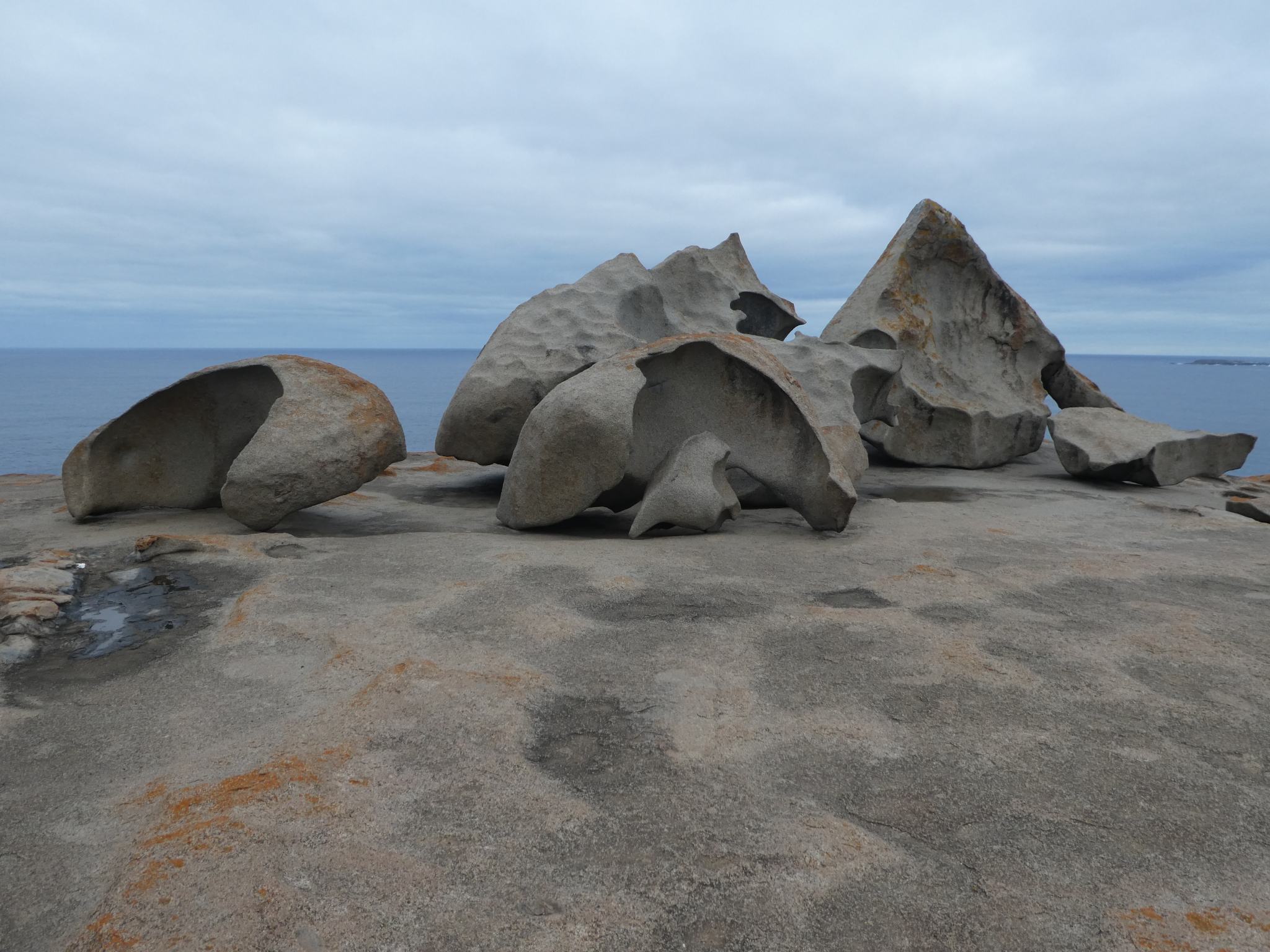 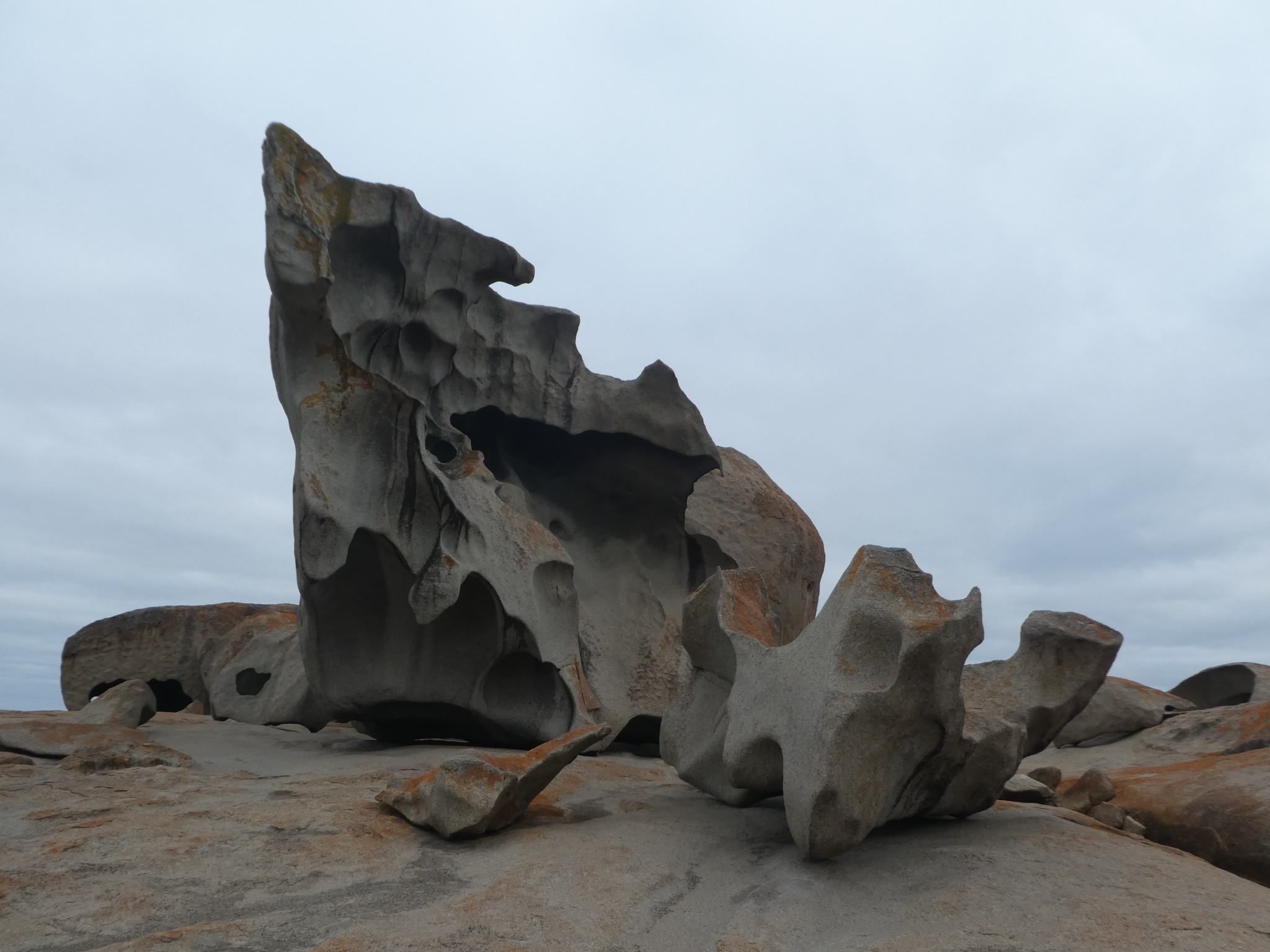 Surprisingly, visitors are permitted to climb all over them.  See the tiny person in the below picture for some idea of the size. 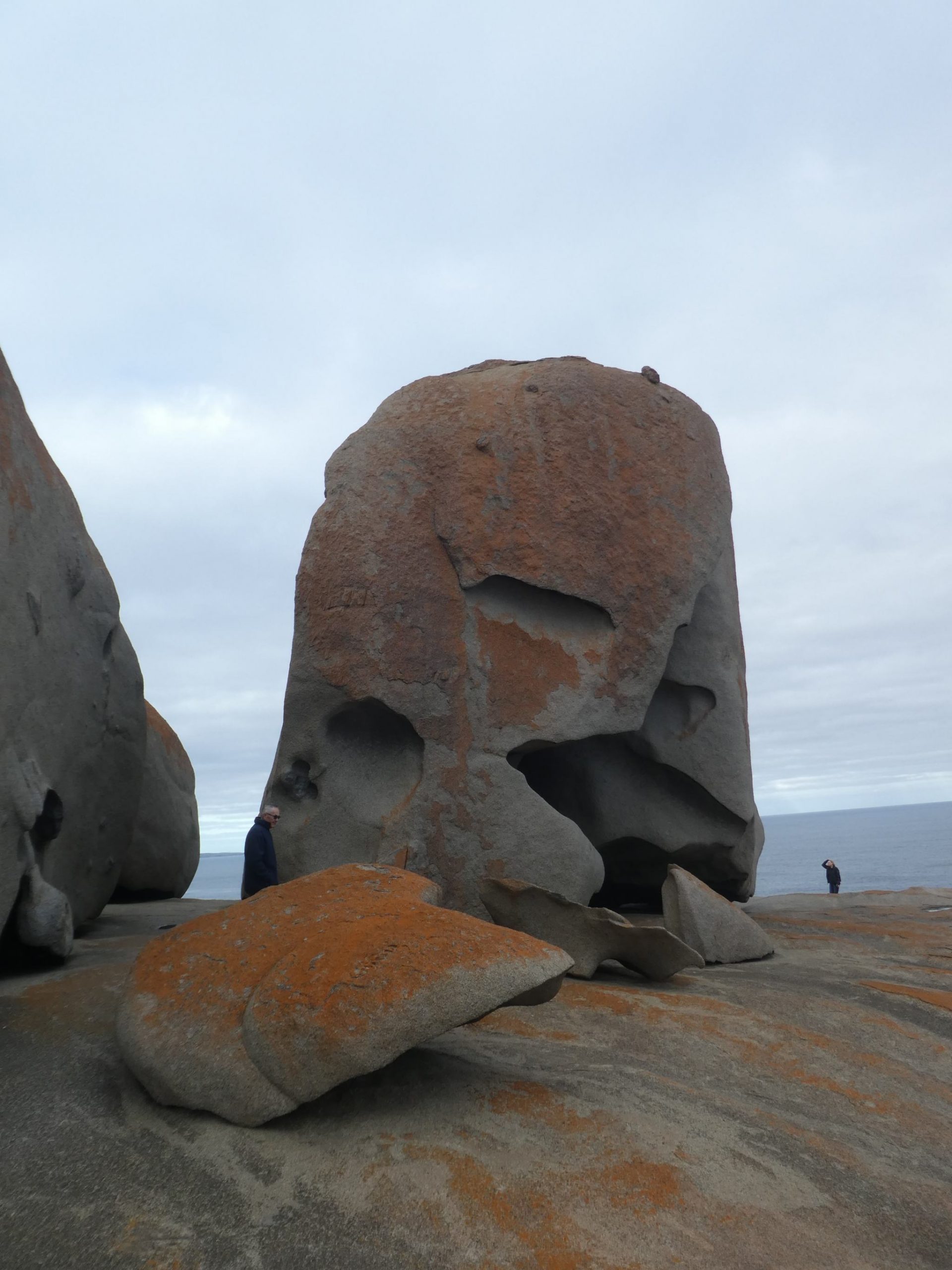 Admirals Arch began life as a cave in the side of a sea stack.  Over millions of years, wave action gradually broke through the back of the cave to the other side of the stack.  What’s unusual about it are the stalactites from the old cave still in place around the curve. 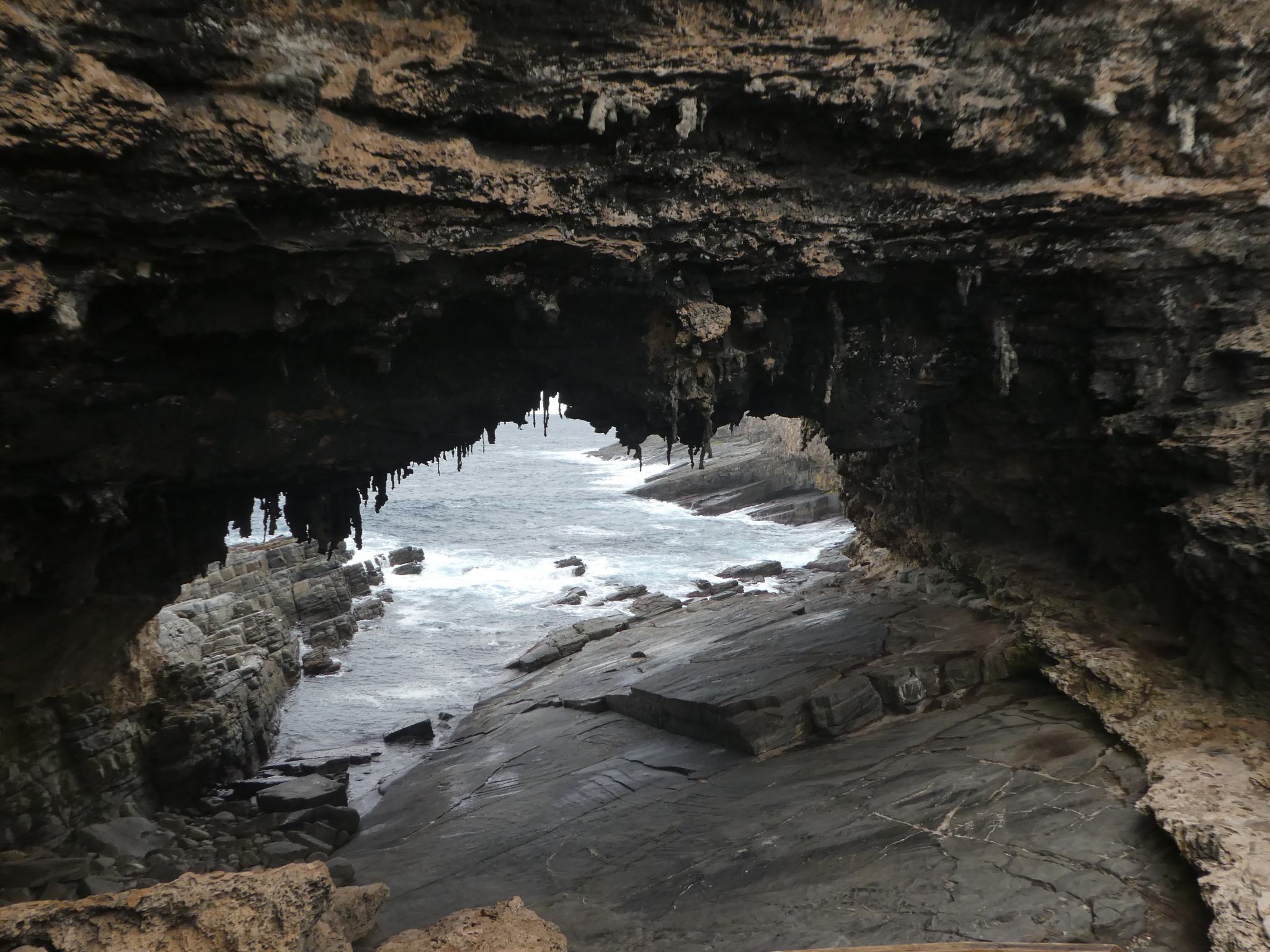 To be honest we didn’t think it was anywhere near as interesting as Remarkable Rocks but the stack is home to a gorgeous colony of Australian fur seals.  As we’ve already mentioned, they are not ‘true’ seals – clearly visible ears! 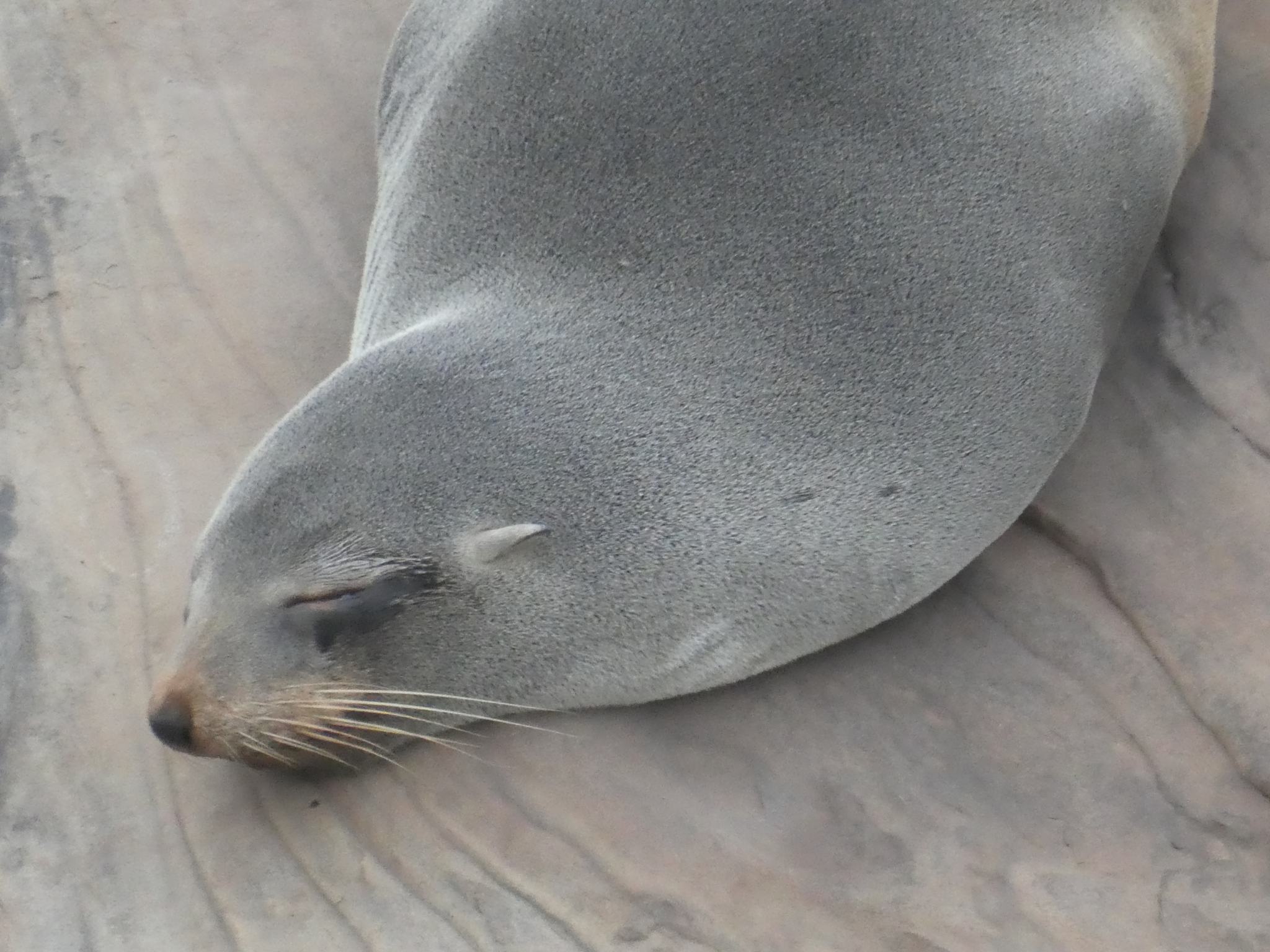 This one was rolling back and forth, so close to the ledge we thought he/she might roll right off. 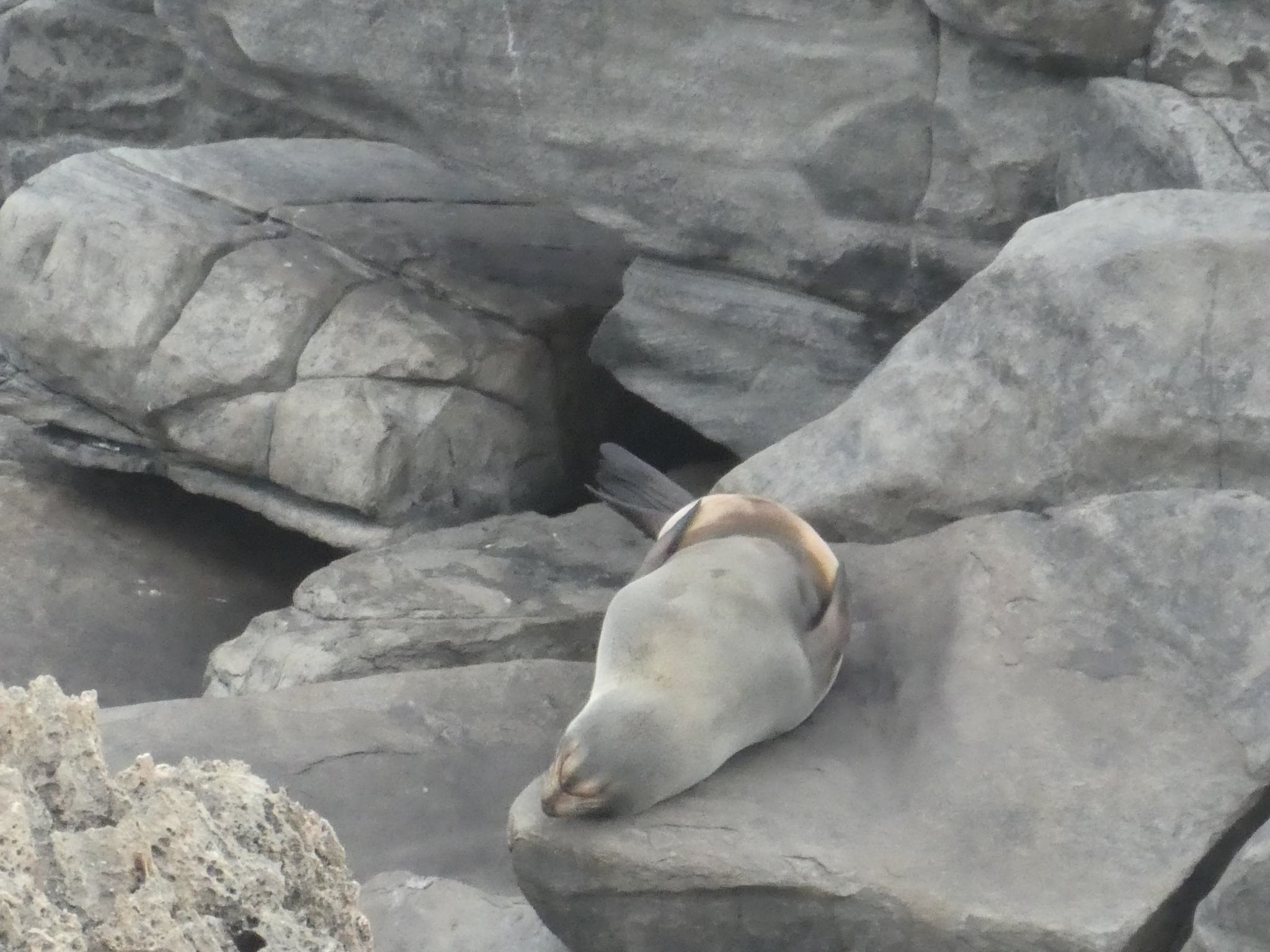 Others were frolicking in the water. 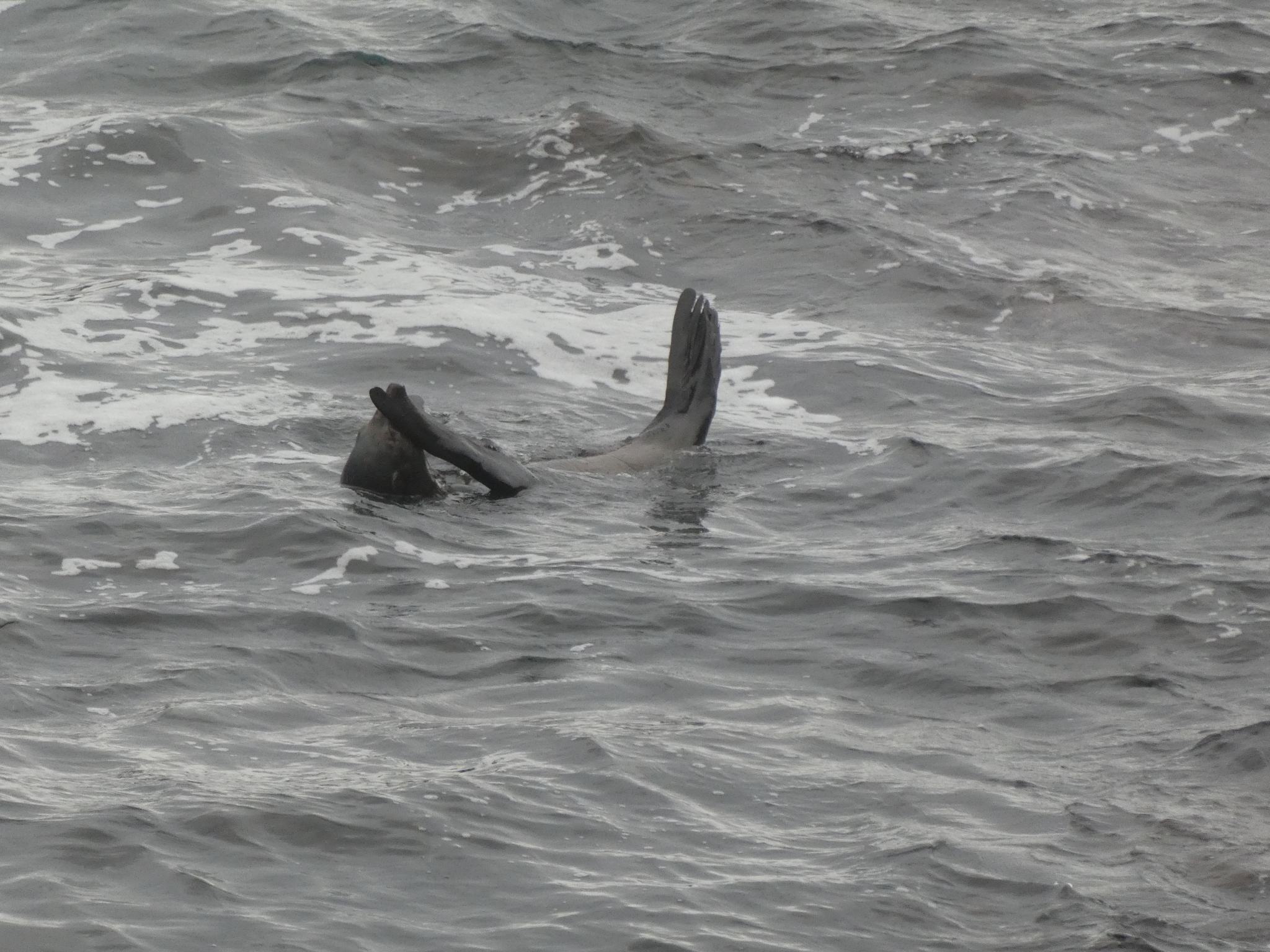 Matthew Flinders arrived on Kangaroo Island on 22 March 1802 during his second circumnavigation of the Australian continent.  After four months at sea with no fresh meat, he and his 94 crew rejoiced in an abundance of kangaroo steaks and stew, reportedly eating 31 kangaroos in 3 days.  Flinders recorded in his diary that “in gratitude of such seasonable a supply, I named this south land Kangaroo Island”.

Flinders came ashore and climbed Prospect Hill, the highest point on the island, to determine his bearing.  A 500 step staircase now allows visitors to do the same. 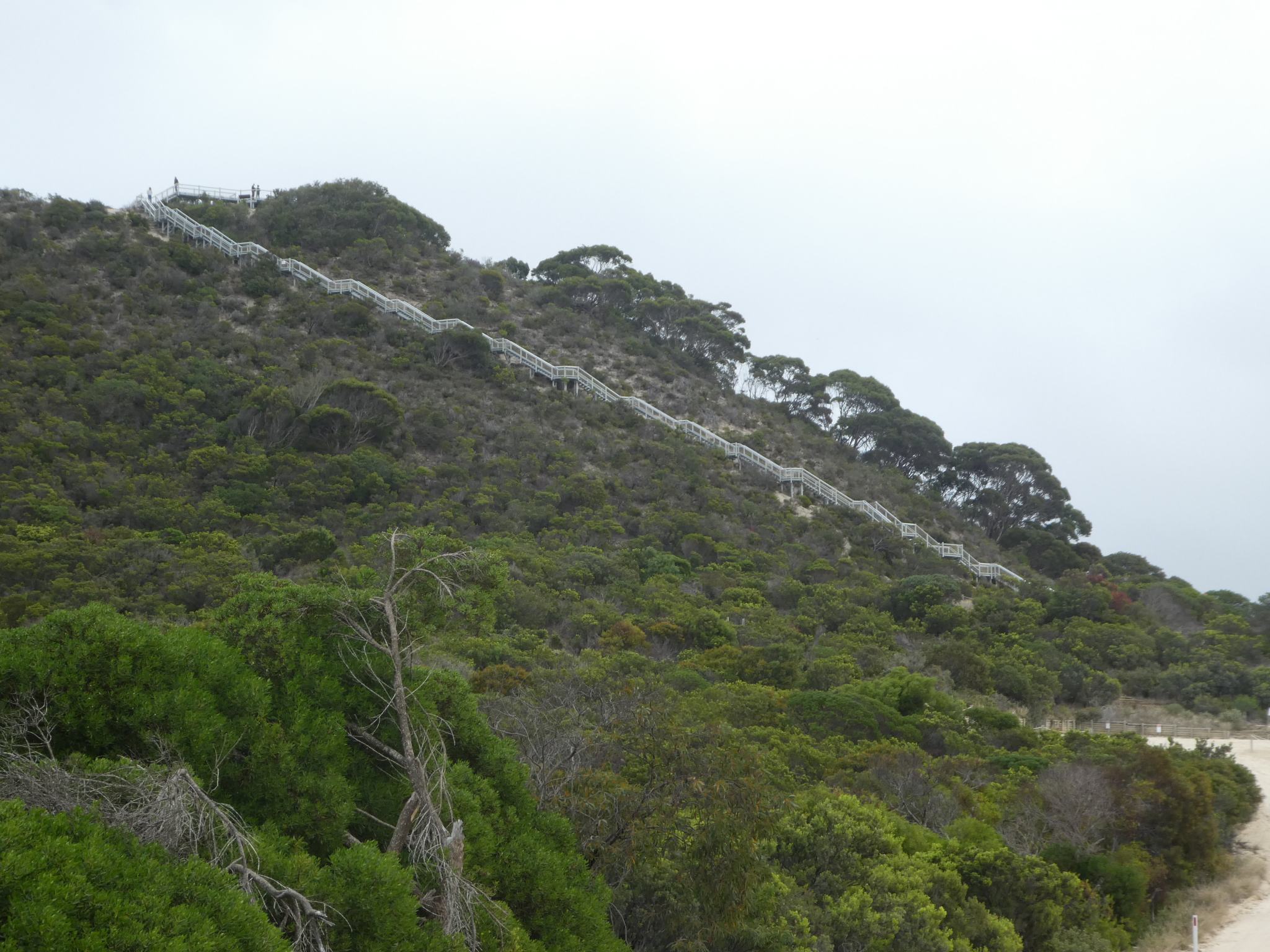 It’s really not much more than a sand dune – KI is rather flat – but the views over Pelican Bay and Encounter Bay are rather fine. 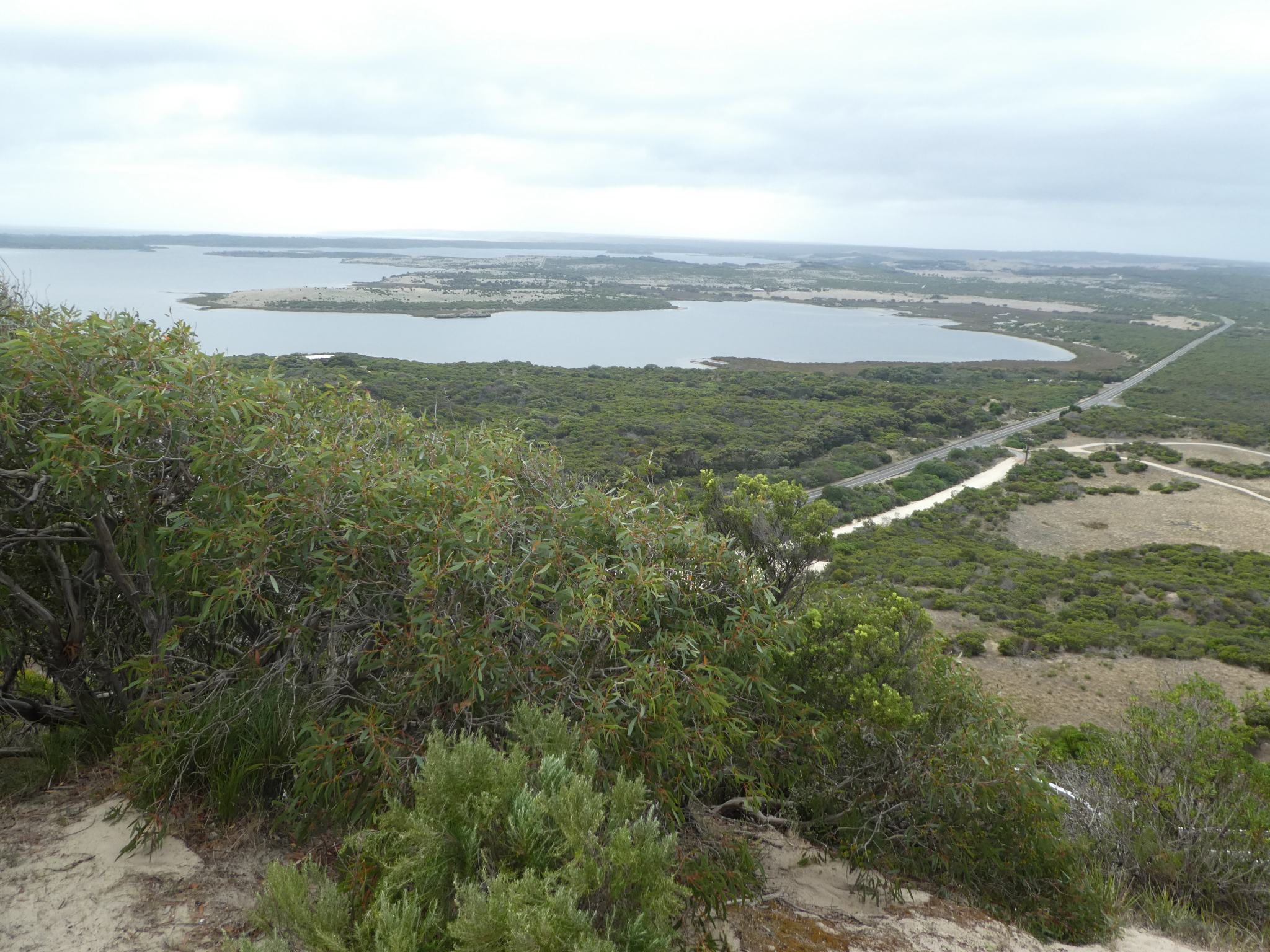 And as for the island’s namesake animals, we saw plenty of those.  There were many of them lazing and grazing on grasses around the Cape Willoughby Lighthouse. 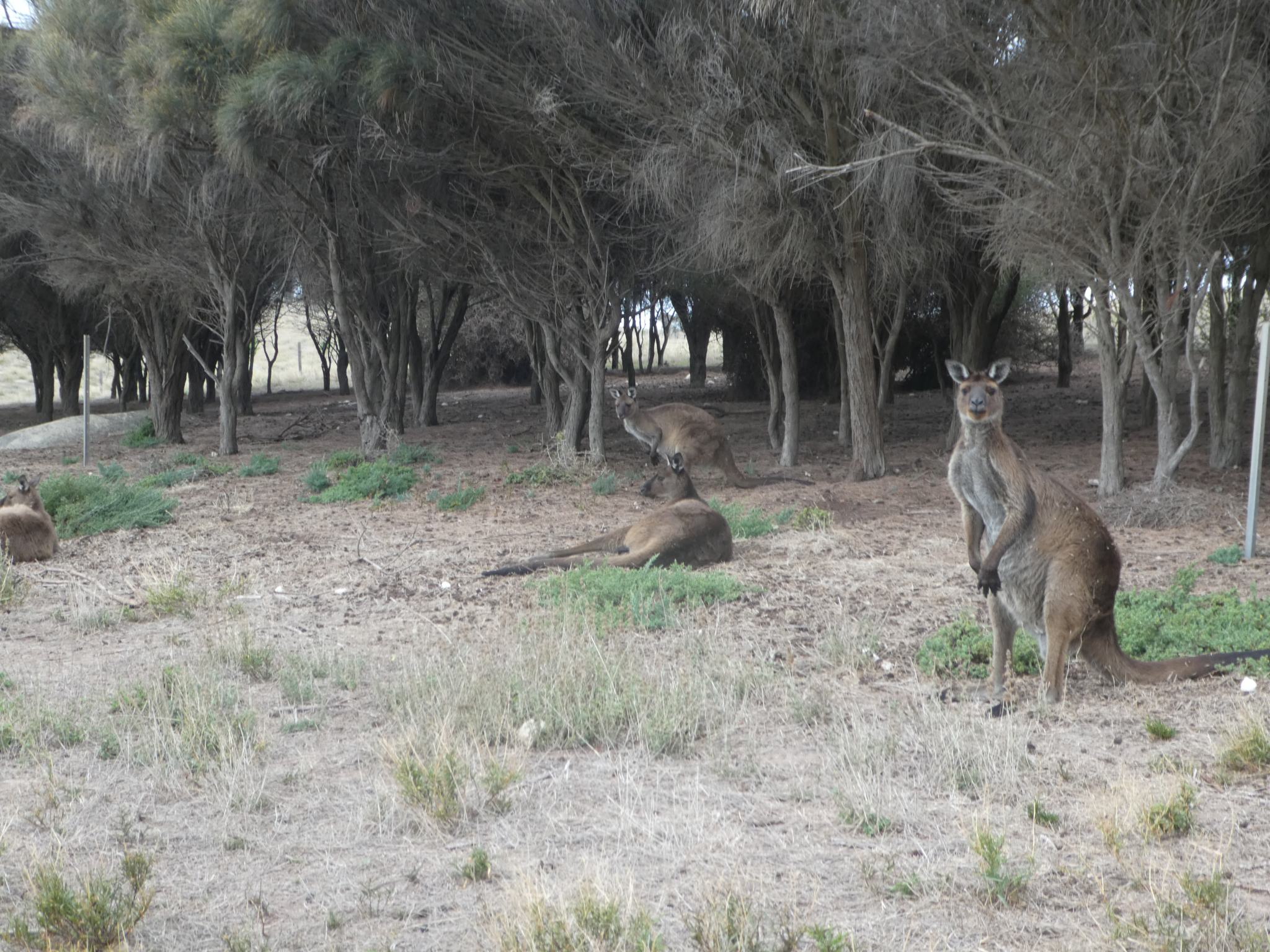 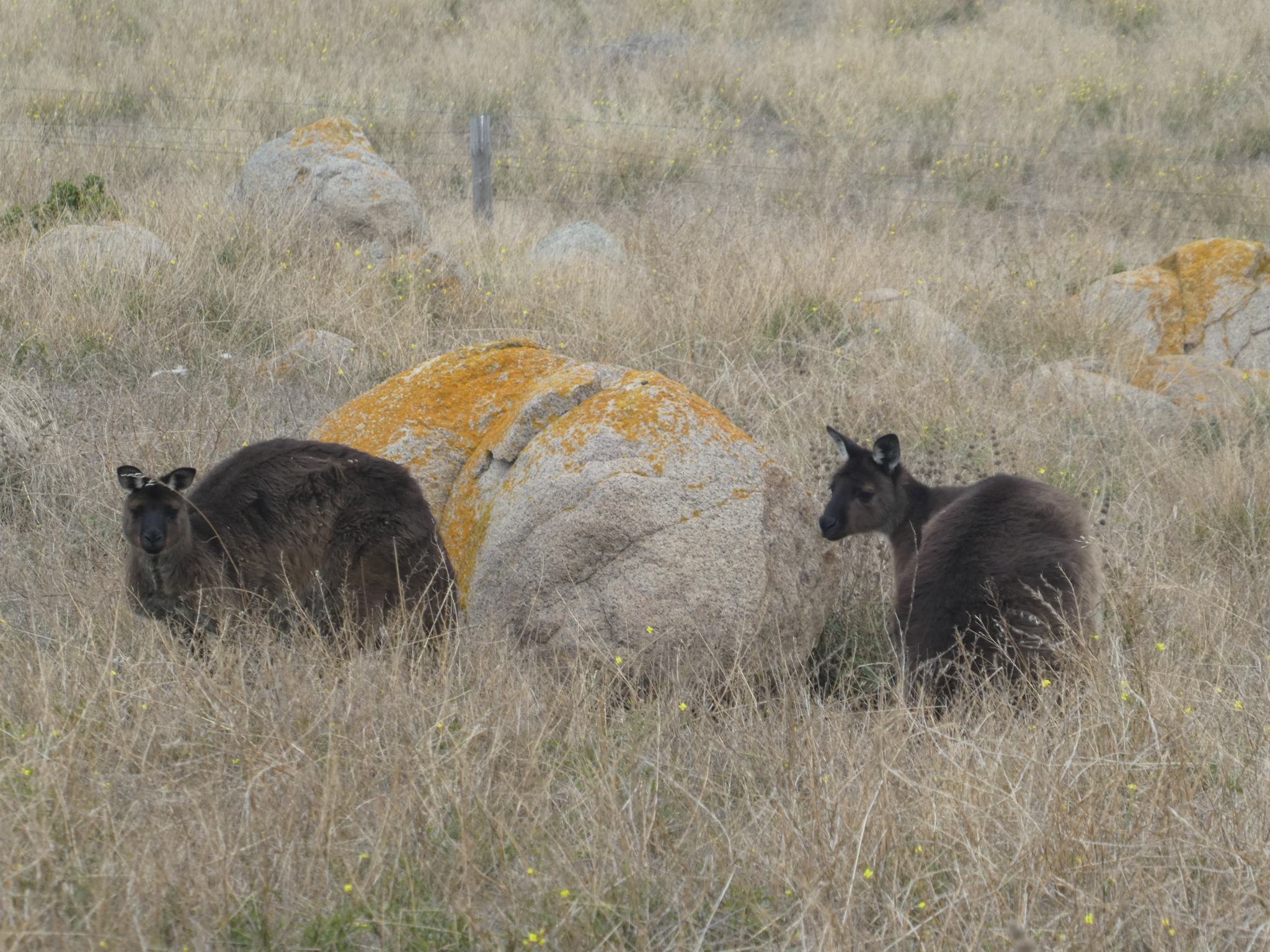 And in the grounds of the stone cottage we rented on the shores of Pelican Bay.  Between the cottage and the water was an enormous native fig tree, and each morning and afternoon kangaroos would come to pick and eat the figs. 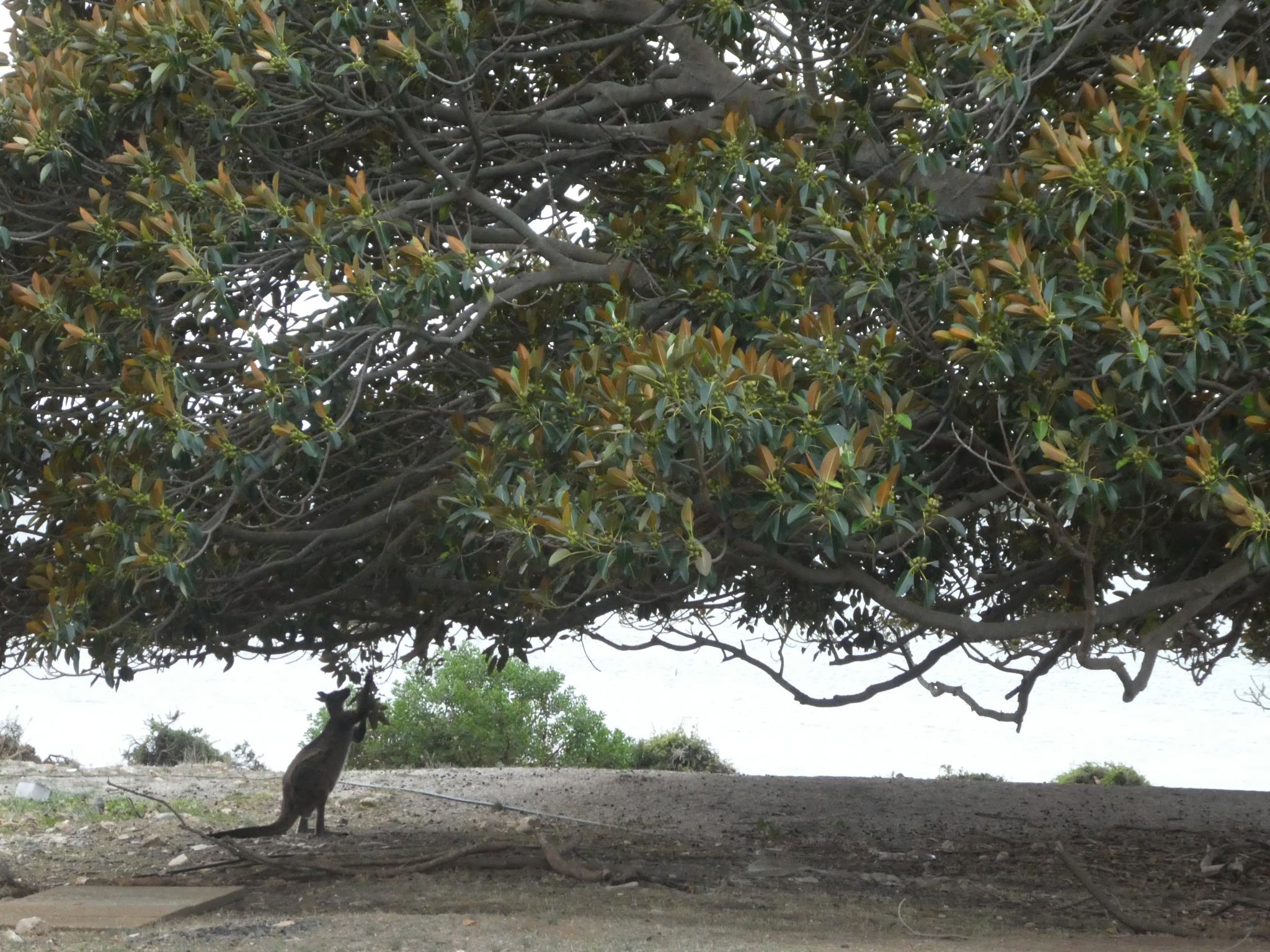 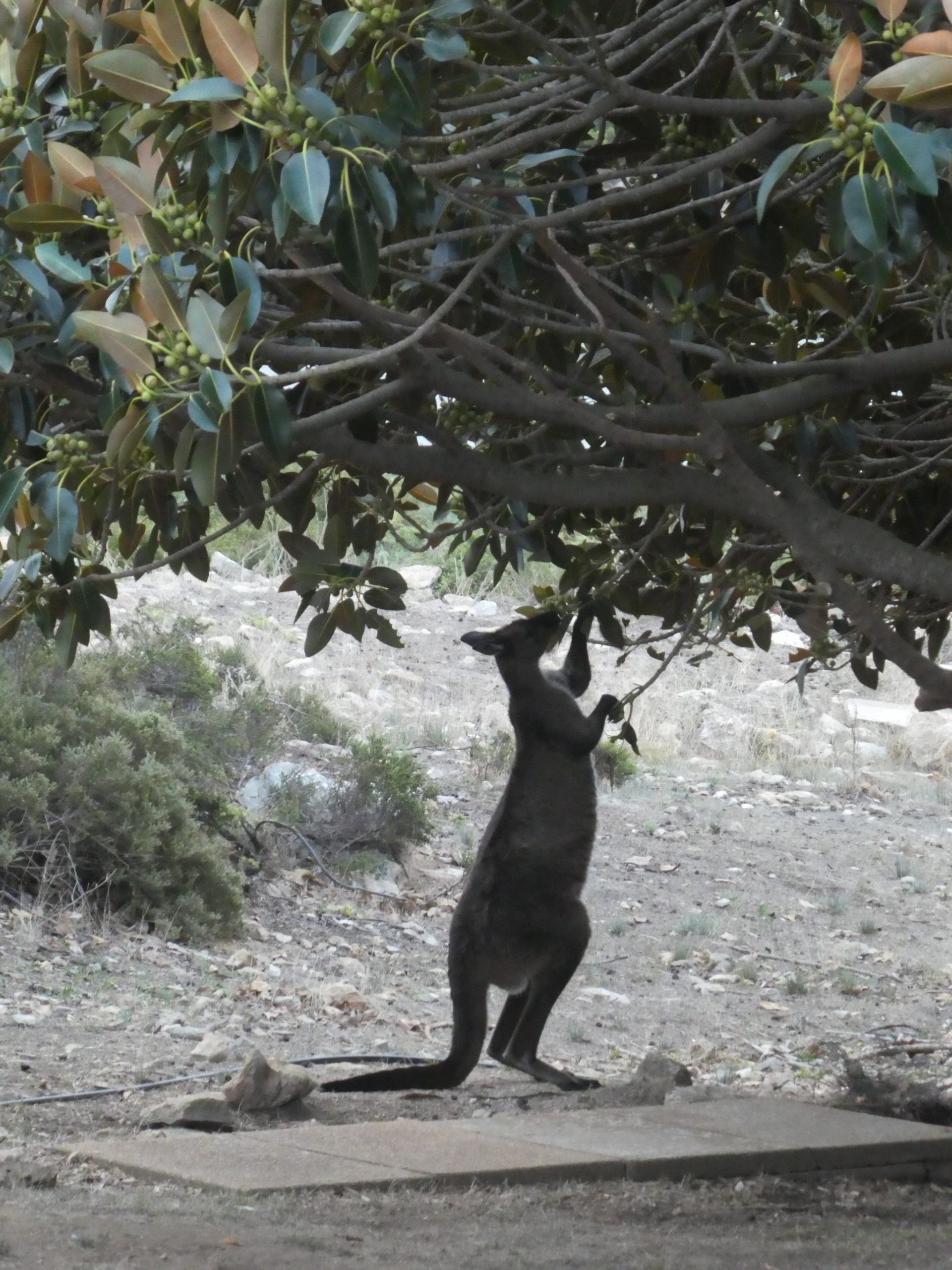 Kangaroo Island is a laidback place with lots to do.  Some people may question whether it’s worth a visit given the destruction caused by the fires, and the answer unequivocally is ‘yes’.  In fact, it’s a very interesting time to visit because it’s so clearly a landscape in transition.