Flinders Island is the largest in the Furneaux Group, a cluster of 52 islands at the eastern end of Bass Strait between Tasmania and the mainland of Australia.

It measures 62km north-south and 37km east-west and is home to only around 800 permanent residents.  Whitemark, the largest town has a population of about 150.  There are a few other small towns and scattered farms, and the rest of the island is national park and coastal reserves.

Archeological studies indicate the island was first inhabited around 35,000 years ago when a land bridge joined Tasmania and the mainland.  When sea levels rose at the end of the last ice age approximately 12,000 years ago, the land bridge was submerged and the islands were formed.  Small communities remained but ultimately all perished from hunger and thirst following an El Niño event 4,500 years ago and the islands remained uninhabited until the arrival of European explorers in the 1700s.

Matthew Flinders began charting the area in 1798 and reported the existence of large seal colonies.  Sealers set up operations on several of the Furneaux Islands and brought Aboriginal women, mostly kidnapped from the Tasmanian mainland.  These were, in fact, the first European settlements in Australia outside Sydney.  At the time, Europeans still had not ‘discovered’ Bass Strait and were uncertain whether Tasmania was an island or an extension of the mainland.   Flinders later returned and conclusively confirmed the position.  For his efforts, the island bears his name.

But sealing proved uneconomic and sealing permits ceased to be issued in 1828.  The sealers left and, shamefully, the aboriginal population was confined to a single settlement at Wybalena Point on Flinders Island.  There they remained for 17 years, along with other Tasmanian Aboriginals brought there under the guise of ‘protection’, before all were forcibly relocated to a settlement near Hobart in 1845.  The island then remained virtually abandoned other than for seasonal mutton-bird processing and a few small farms, until a post-WWII soldier settlement program established more farms there.

Situated in the roaring 40s, it’s hardly a farmers’ paradise but it’s lamb has a deservedly stellar reputation.  With a tiny population, remote location and marginal country, it’s remained a low key place ever since.  Access is via small plane flights from Hobart, Launceston or Melbourne with services a few times a week from each.  This rather limits the number of visitors, but from our perspective that’s not a bad thing because this rugged, beautiful place remains an unspoilt gem.

There are a swathe of crystal clear, white sand beaches, like this one at Trousers Point. 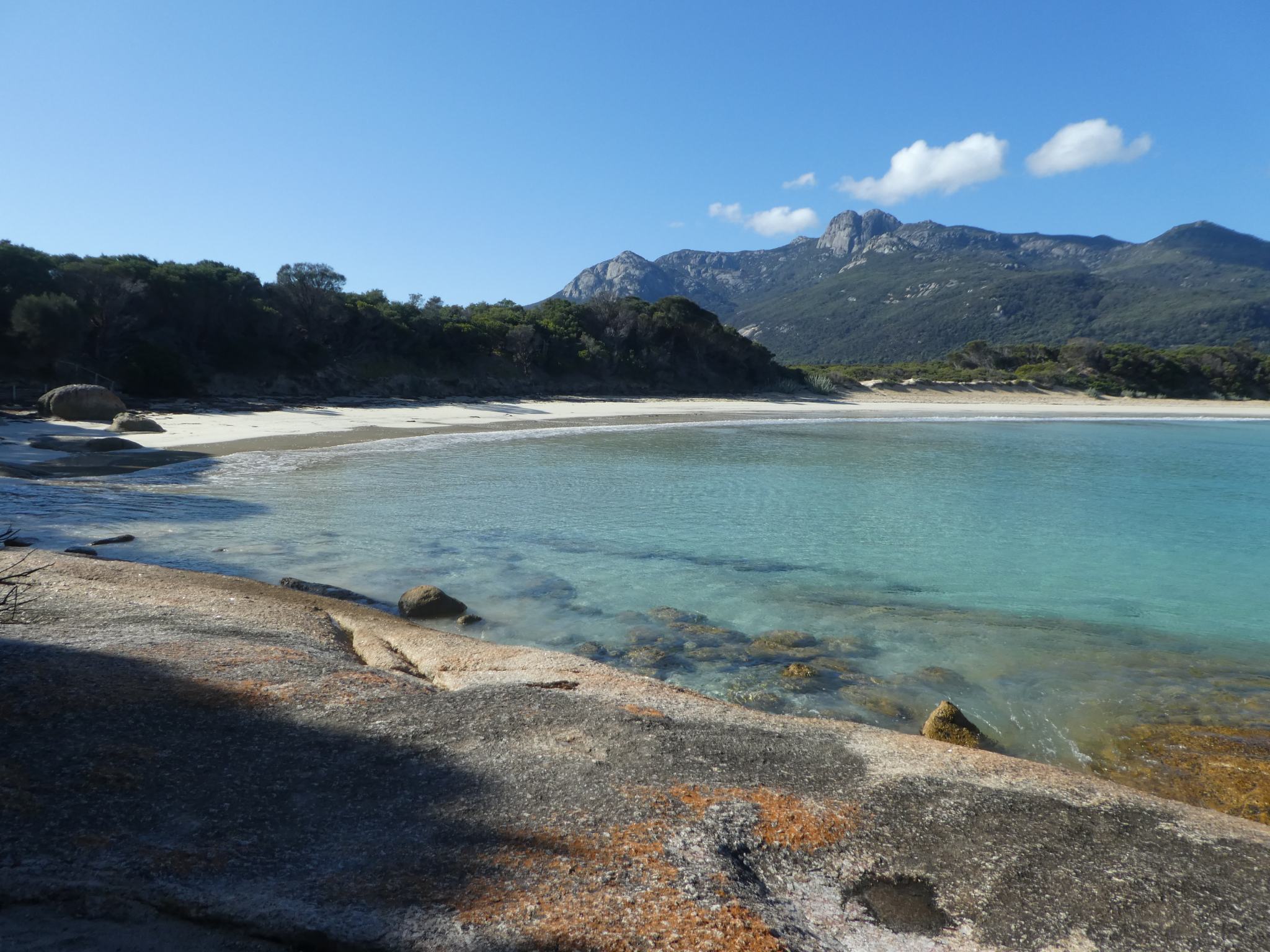 We understand the island gets an influx of holiday makers in the summer, but in late August, it’s still too chilly in the water and visitor numbers were small.

We did some excellent day walks, all pristine and almost all without seeing another person.

This 6.5km walk starts in the coastal heath behind Allport Beach, emerging onto the rocky shore with a view back to the north-facing, pristine white sand beach. 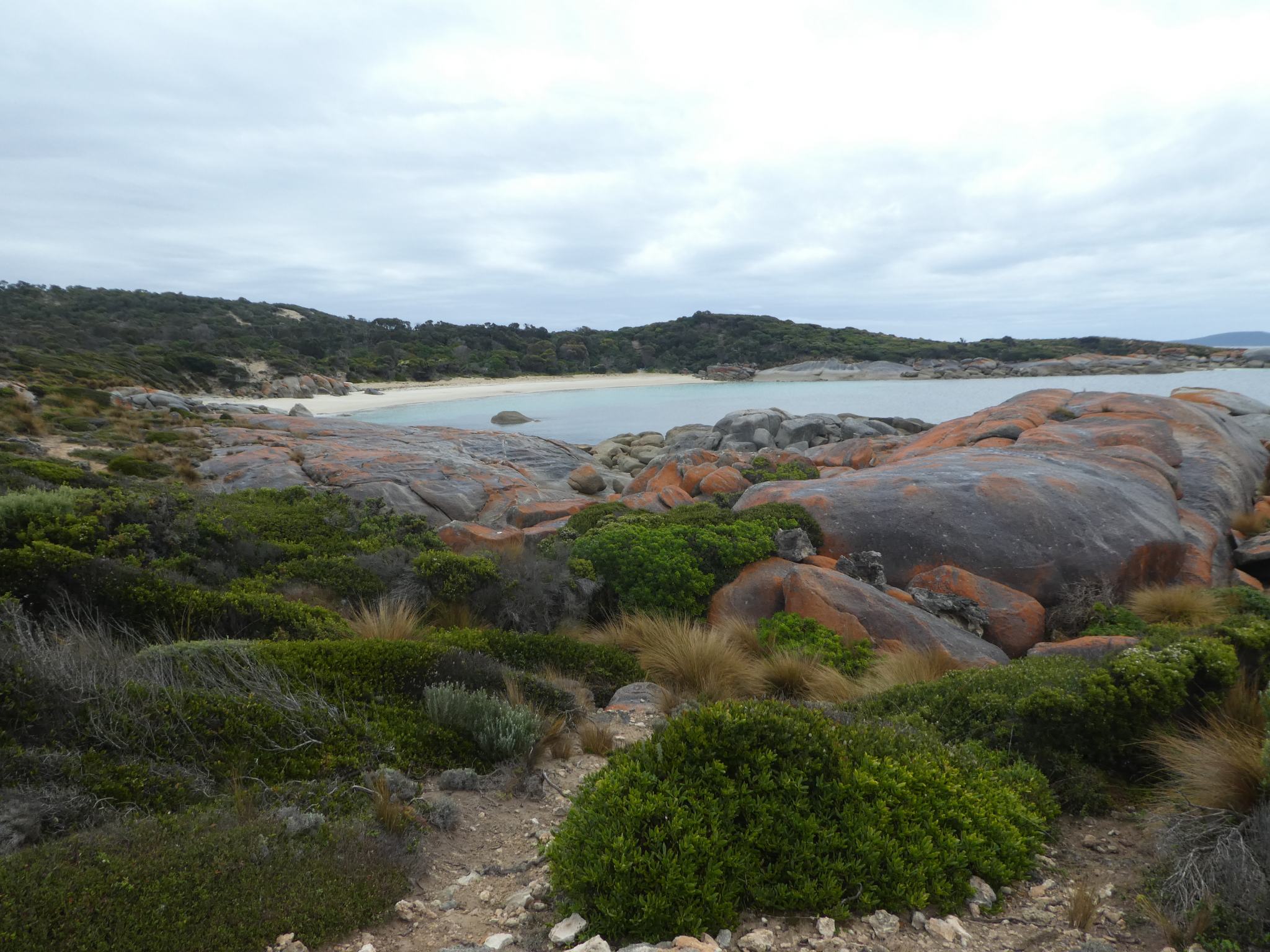 The track meanders over some impressive granite boulders, coloured red by lichen reminiscent of what we saw at the Bay of Fires. 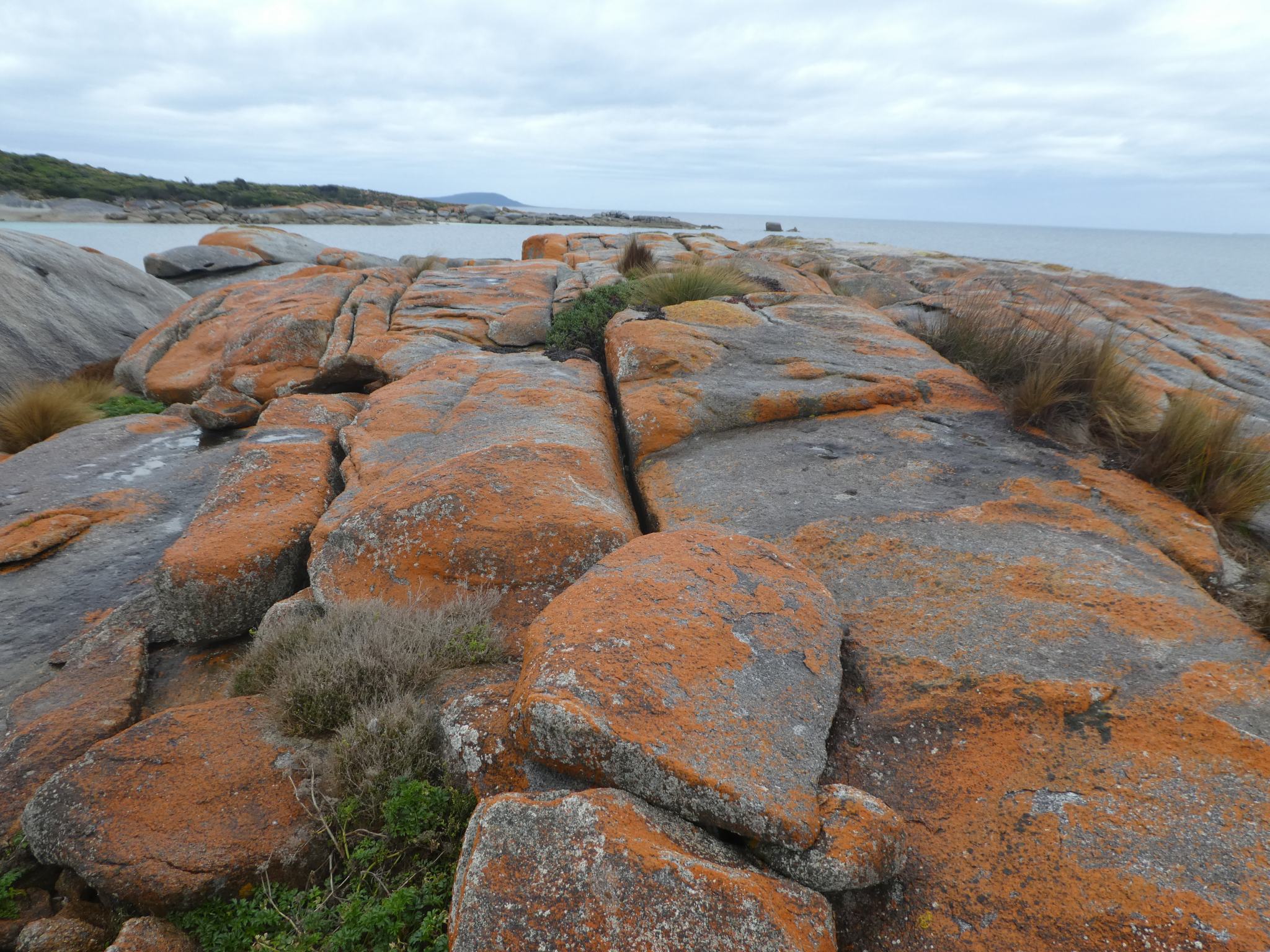 Crossing a rocky headland, the track drops down onto Old Jetty Beach. 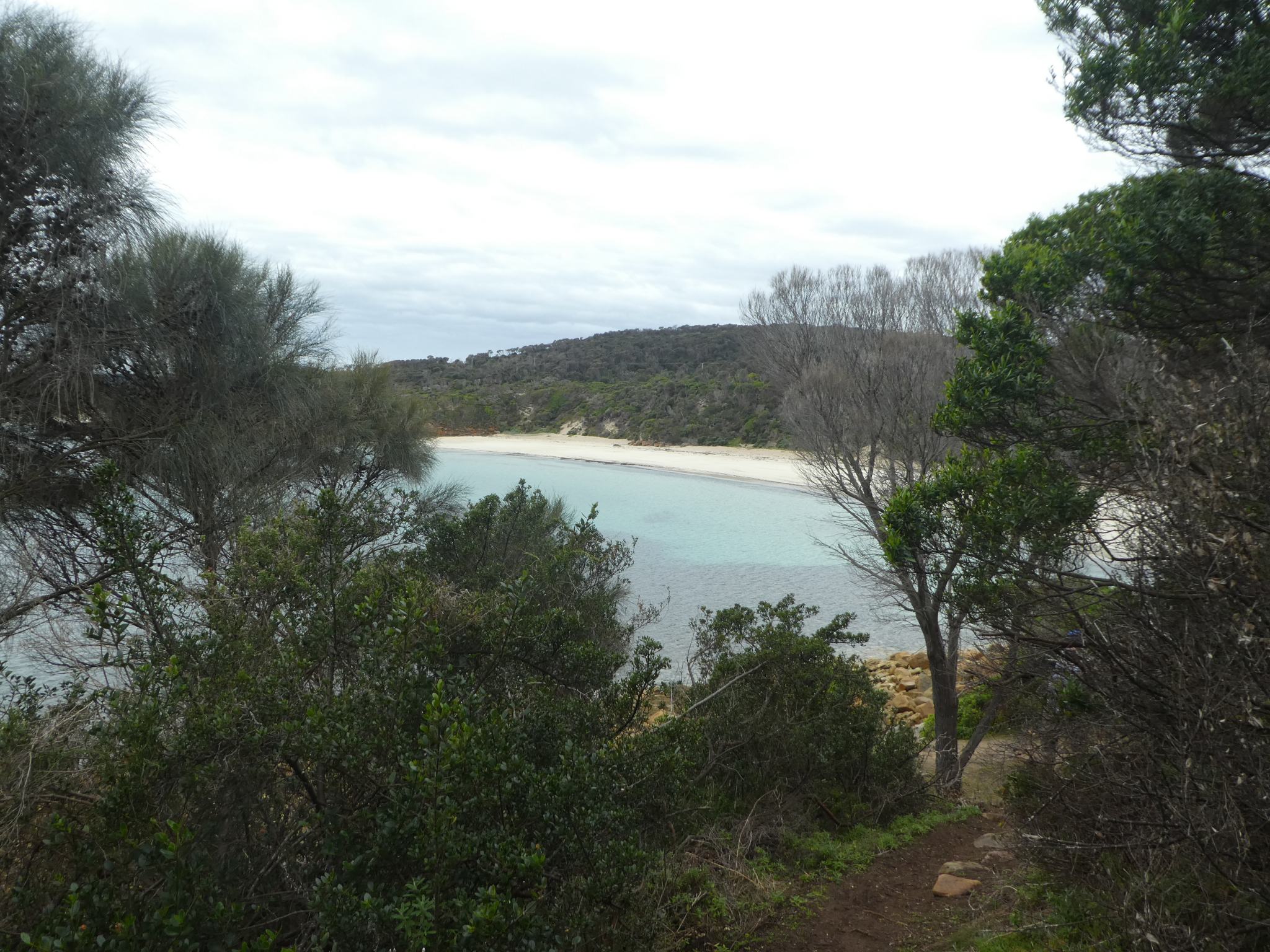 At the far end, crossing another small headland leads to Emita Beach with a backdrop of more lichen covered rocks. 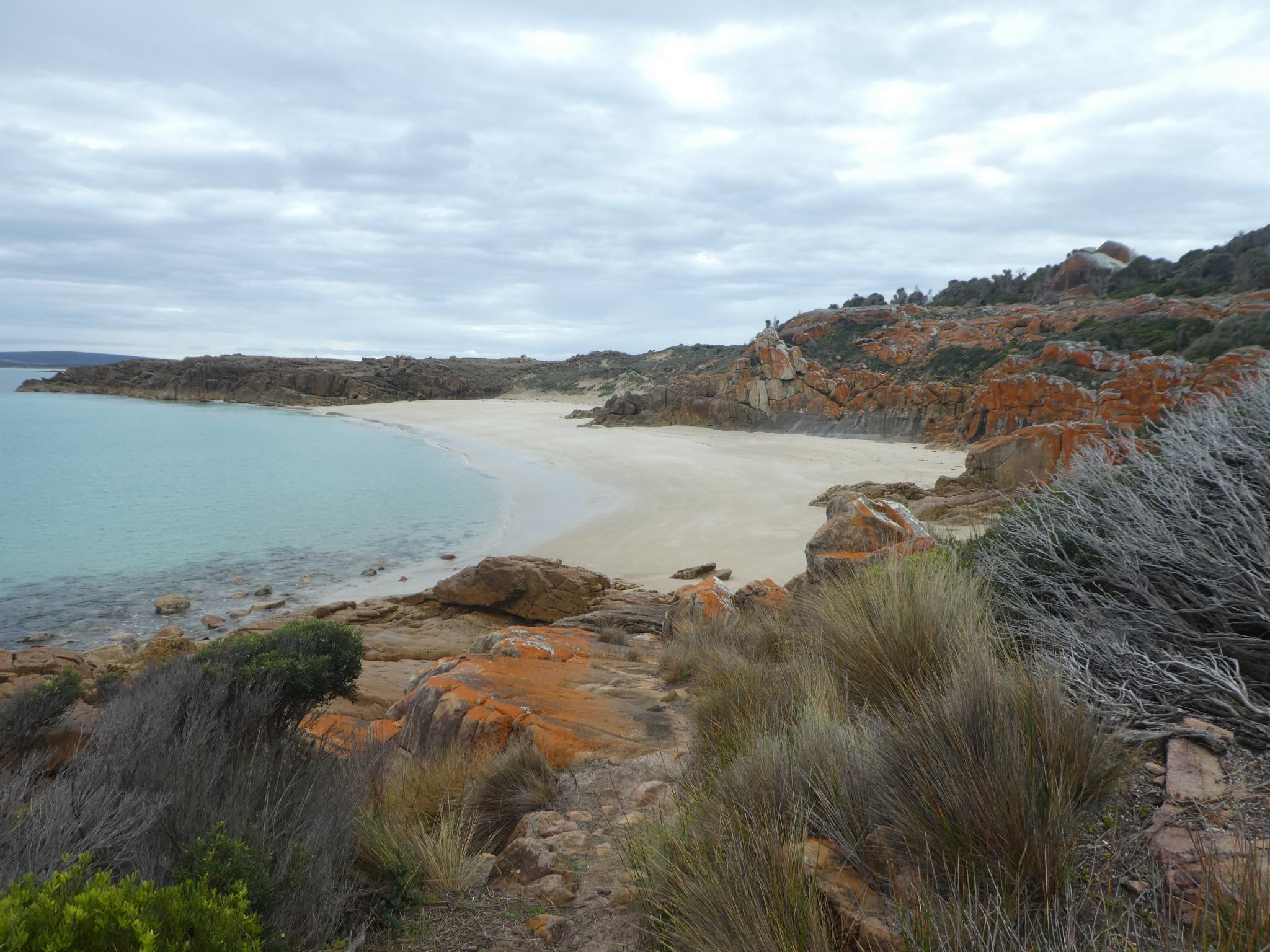 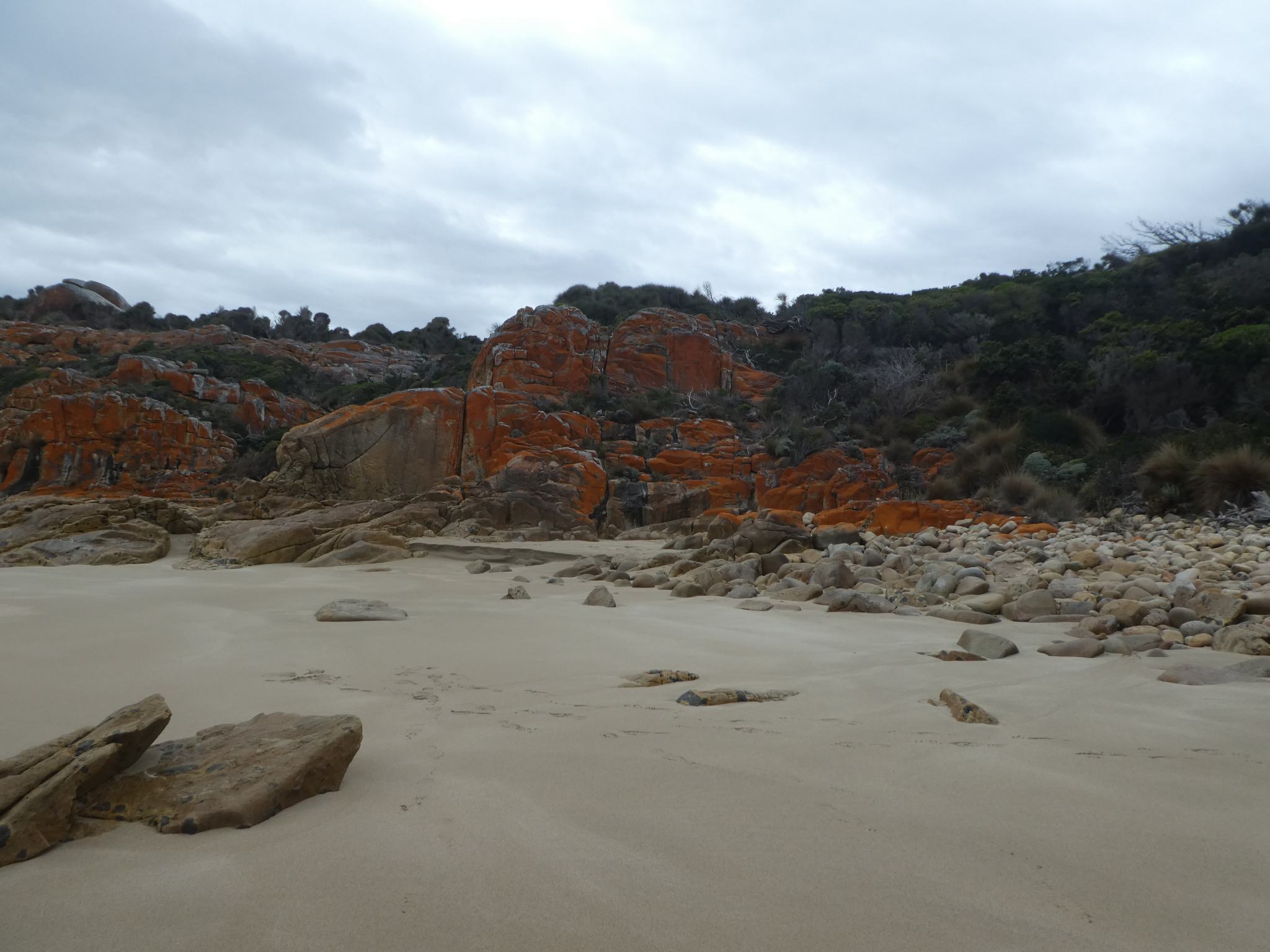 The trail traverses an area of coastal grassland to cross to the next beach and then its a rock hop along more of those red lichen encrusted boulders.  There were some amazing shapes, like this one that looked like a giant pair of feet. 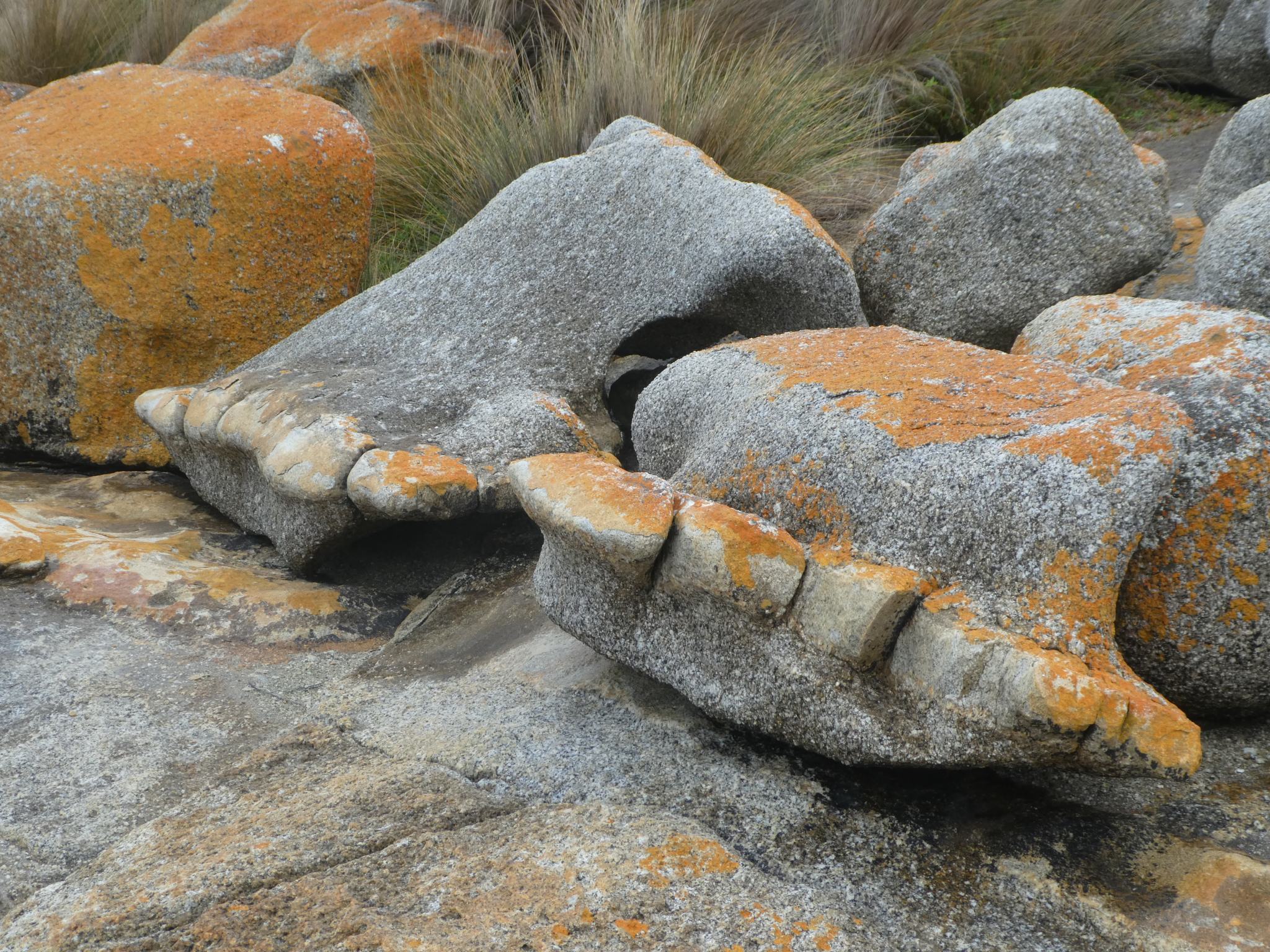 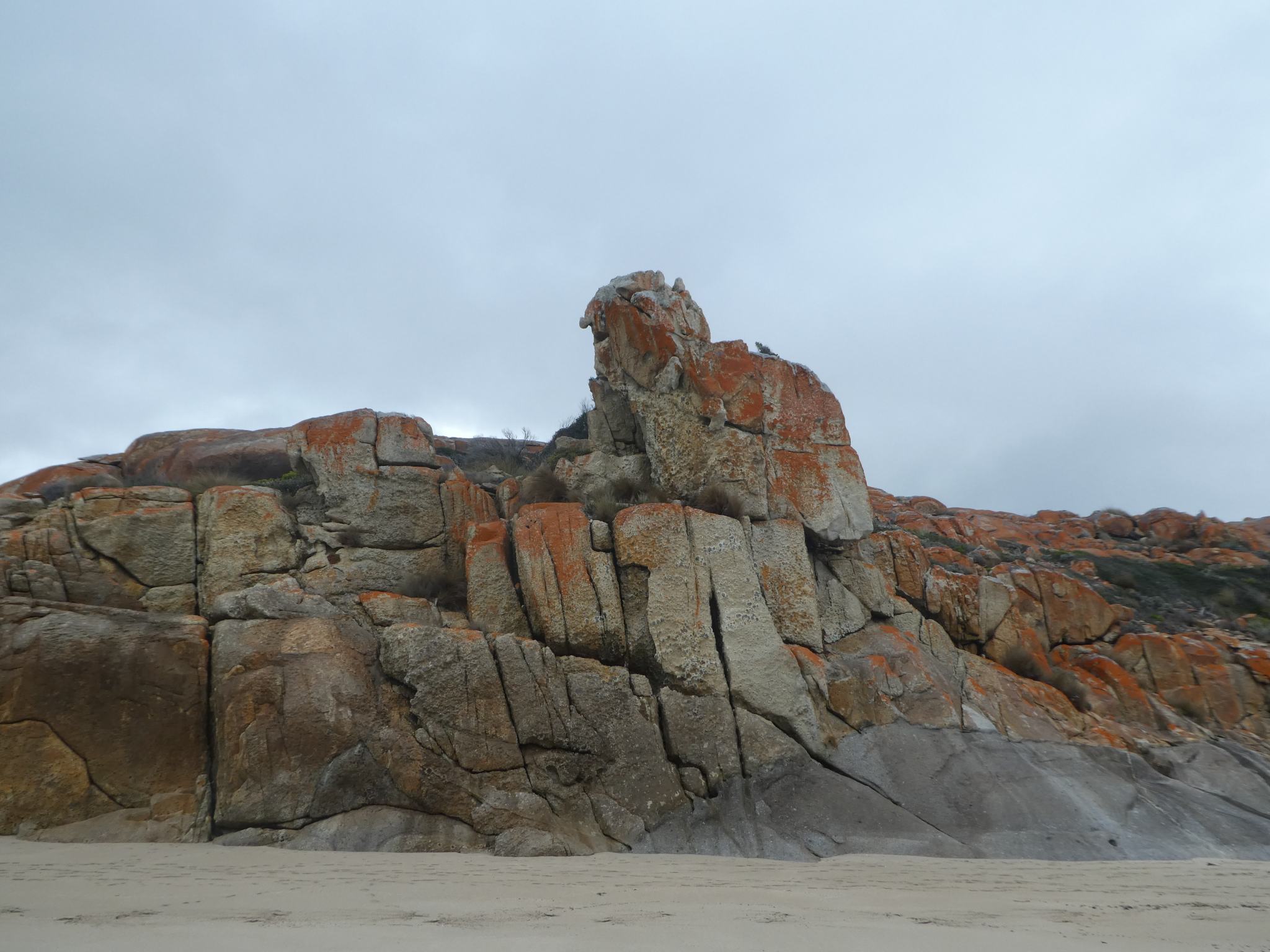 After the final rocky section, another sweep of white beach. 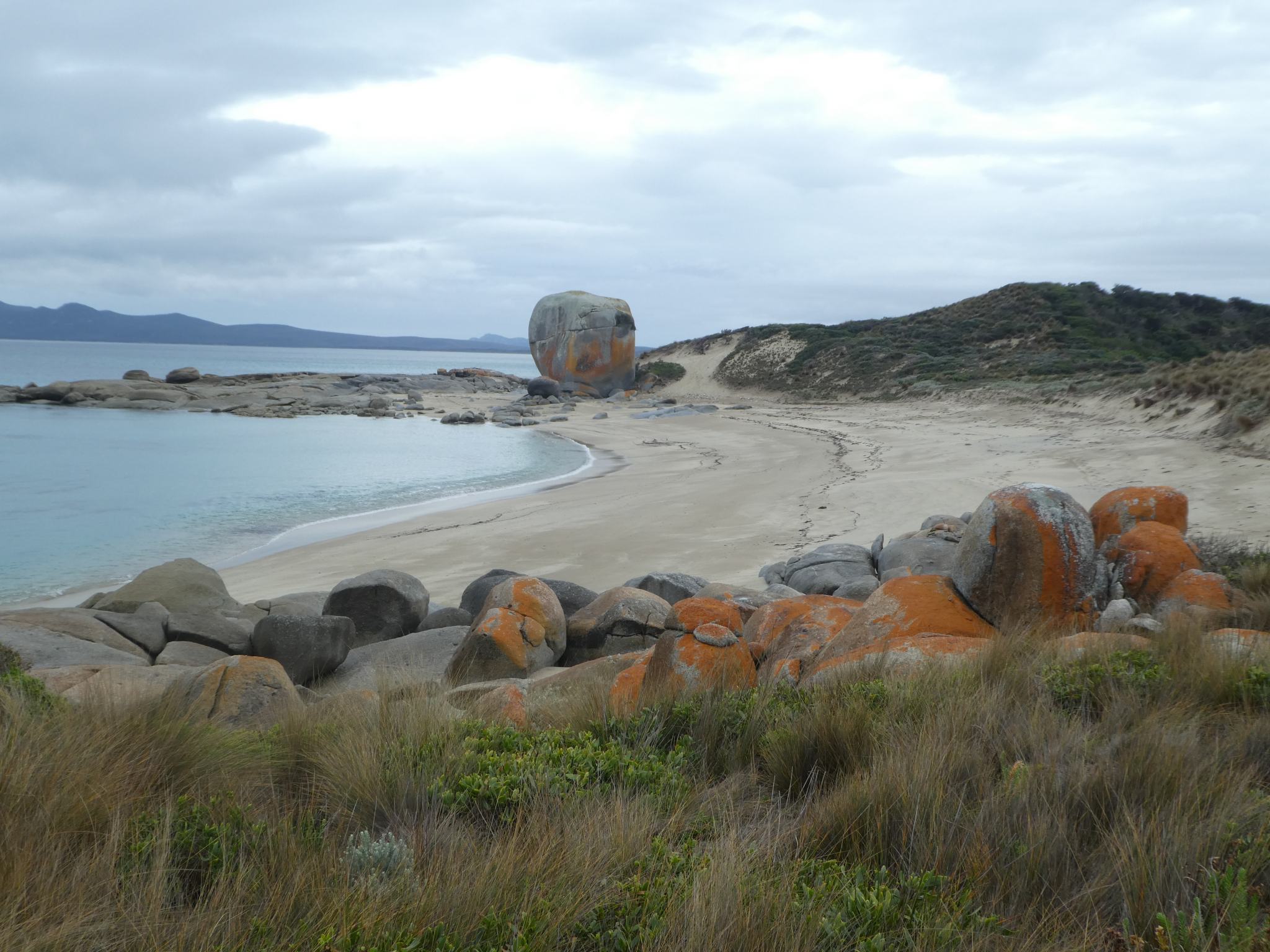 And at the far end, Castle Rock.  We are not sure why it’s named this.  It looked more like a lumpy scone to us! 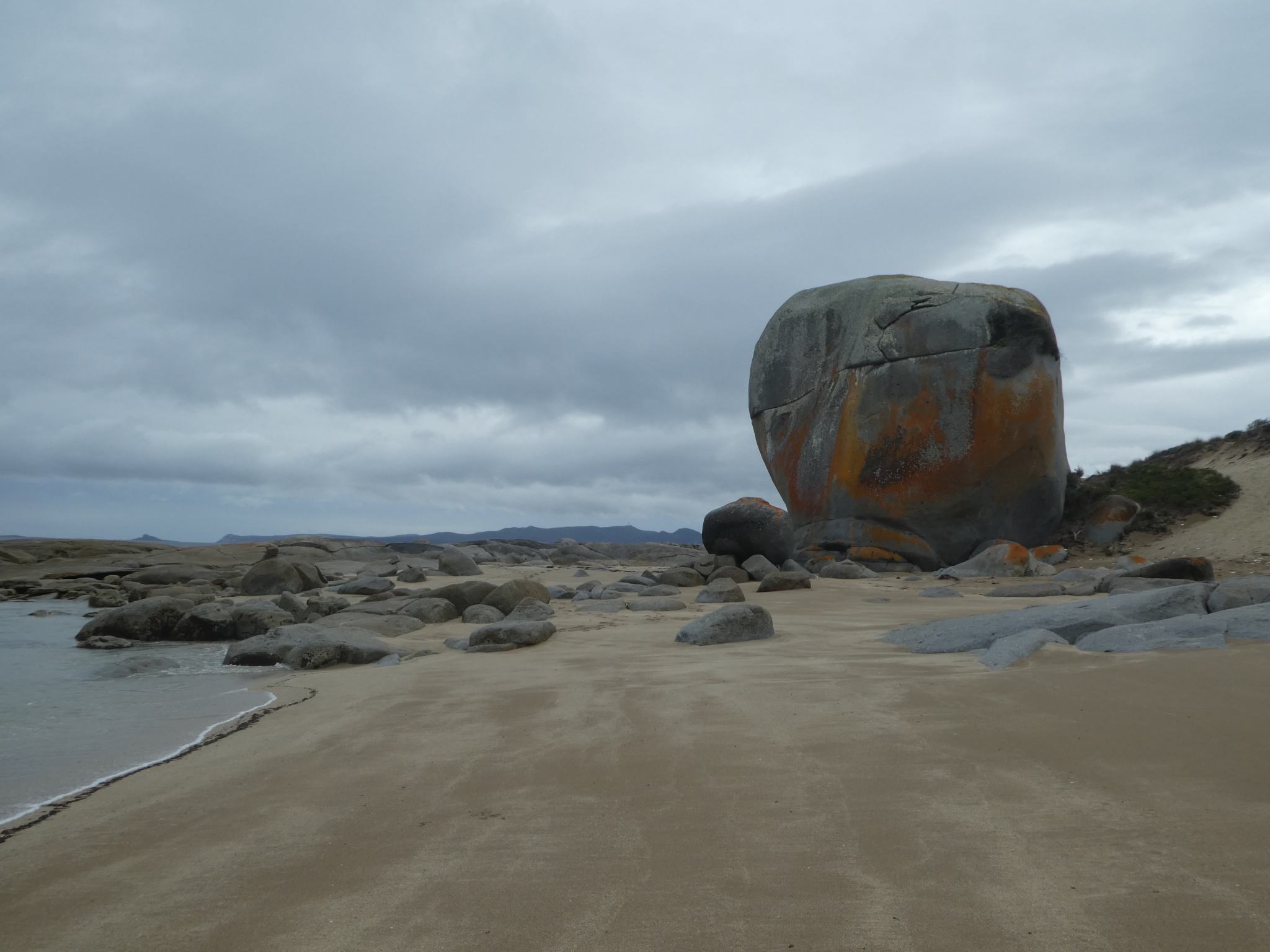 This walk is short, easy to navigate and essentially flat.  With lovely beaches, interesting granite boulders and views, it’s little surprise that it’s one of Tas Parks ‘60 Great Short Walks’.

And after returning to the start point, it’s worth dropping into the Furneaux Museum, just up the road in the village of Emita.  The museum has a collection of historic buildings relocated from other parts of the island, including the original police cells, a settler’s cottage, and a replica of a mutton bird processing shed.  At the time we visited it also had a charming exhibition of historic personal items donated by local families and curated by volunteers.

And if you visit on a Sunday, there’s a food truck in the grounds serving good coffee and delicious morsels.  The menu changes constantly, with a focus on local and fresh.  We were lucky to score some first-of-the-season locally caught scallops dusted with a spice mix made by a local providore.  Delicious!

A line of granite massifs known as the Strezlecki Peaks runs across the southern part of Flinders Island. 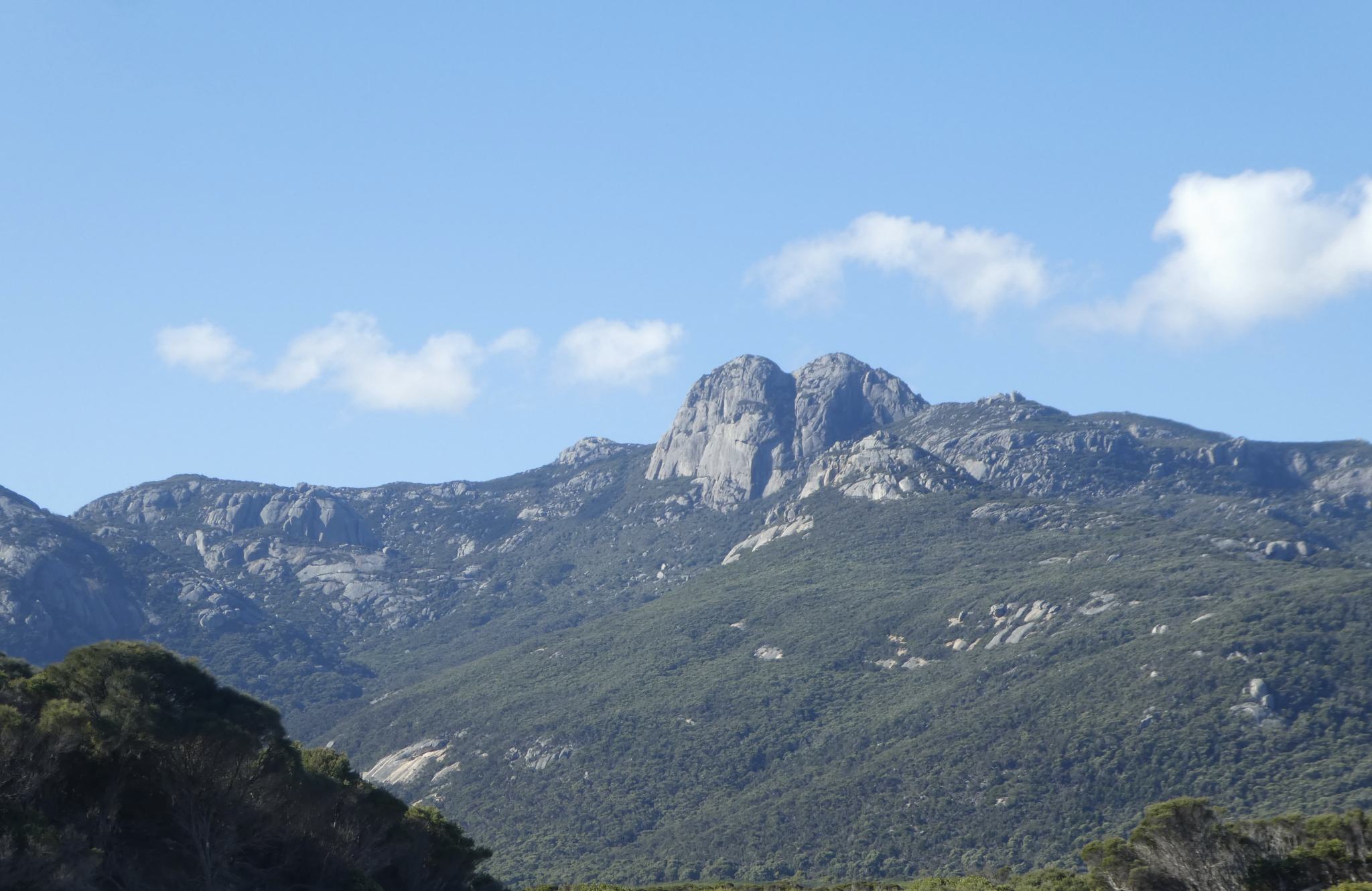 The tallest is only 800 metres high,  but it’s a reasonably tough climb.  From its start point at 20 metres above sea level, the track ascends to the highest peak in just 2.8km of track.  That’s a gradient of 1:3.5 which explains why Tas Parks classifies it as a Grade 4 walk even though it is neither long nor technically difficult.

The first section is a muddy path through dense forest, where we were lucky to spot a Bennett’s wallaby having breakfast. 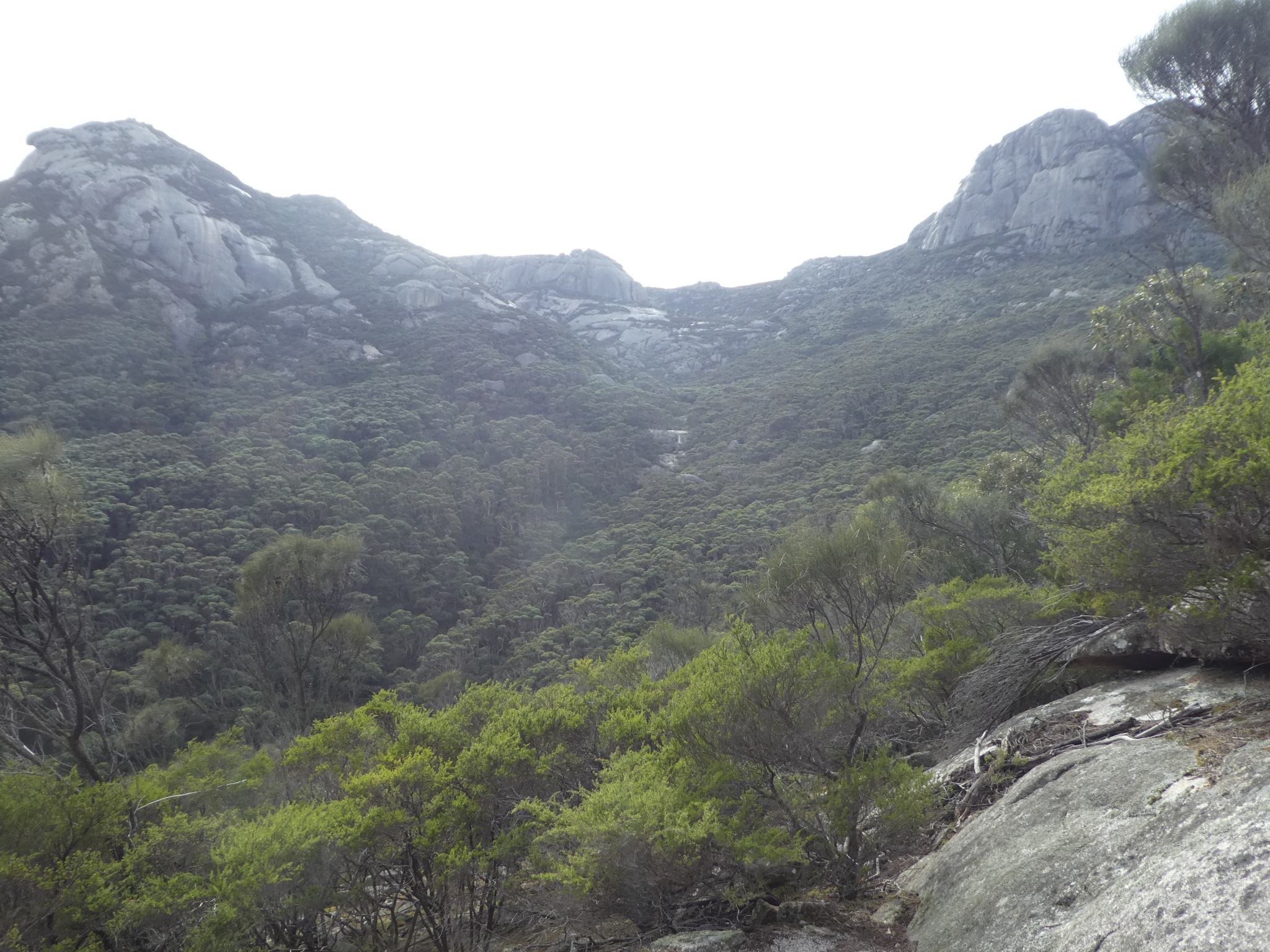 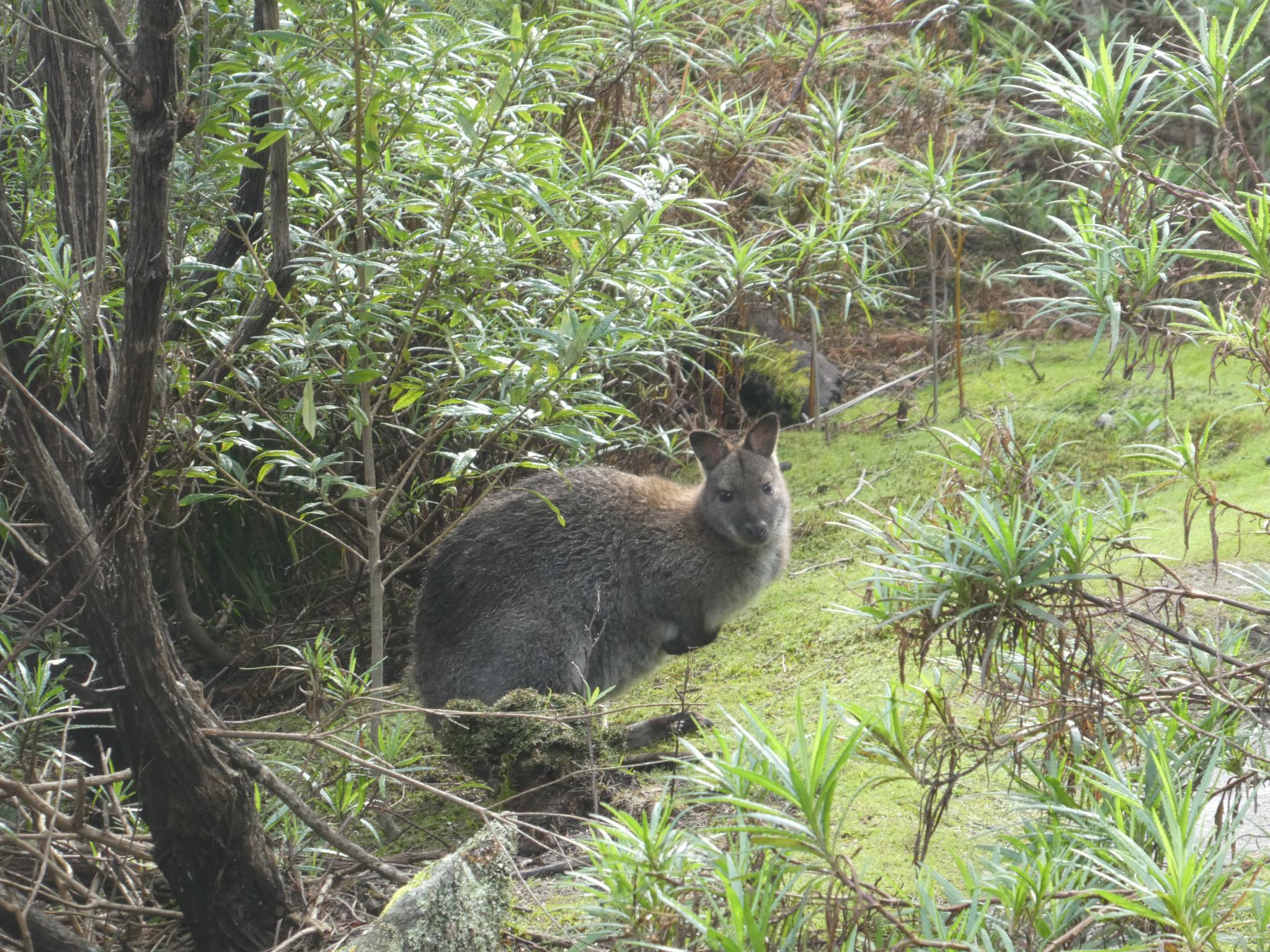 The track quickly becomes a climb up, around and over large boulders which can be quite slippery.  Toward the top you need to clamber up the bare granite tors but none of it is unreasonably difficult.

It’s important to pick a good weather day.  On a wet day, it can be treacherous.  Also, if there’s any fog or low cloud, it’s fairly pointless because the real prize on this walk is the views that open up once you clear the tree line and from the top.  It’s often windy and can be bitterly cold on the peak even on a fine day, and conditions can change quickly so it’s advisable to bring something warm and wet weather gear even if the weather looks benign.  We lucked a bright sunny day, and the views were spectacular. 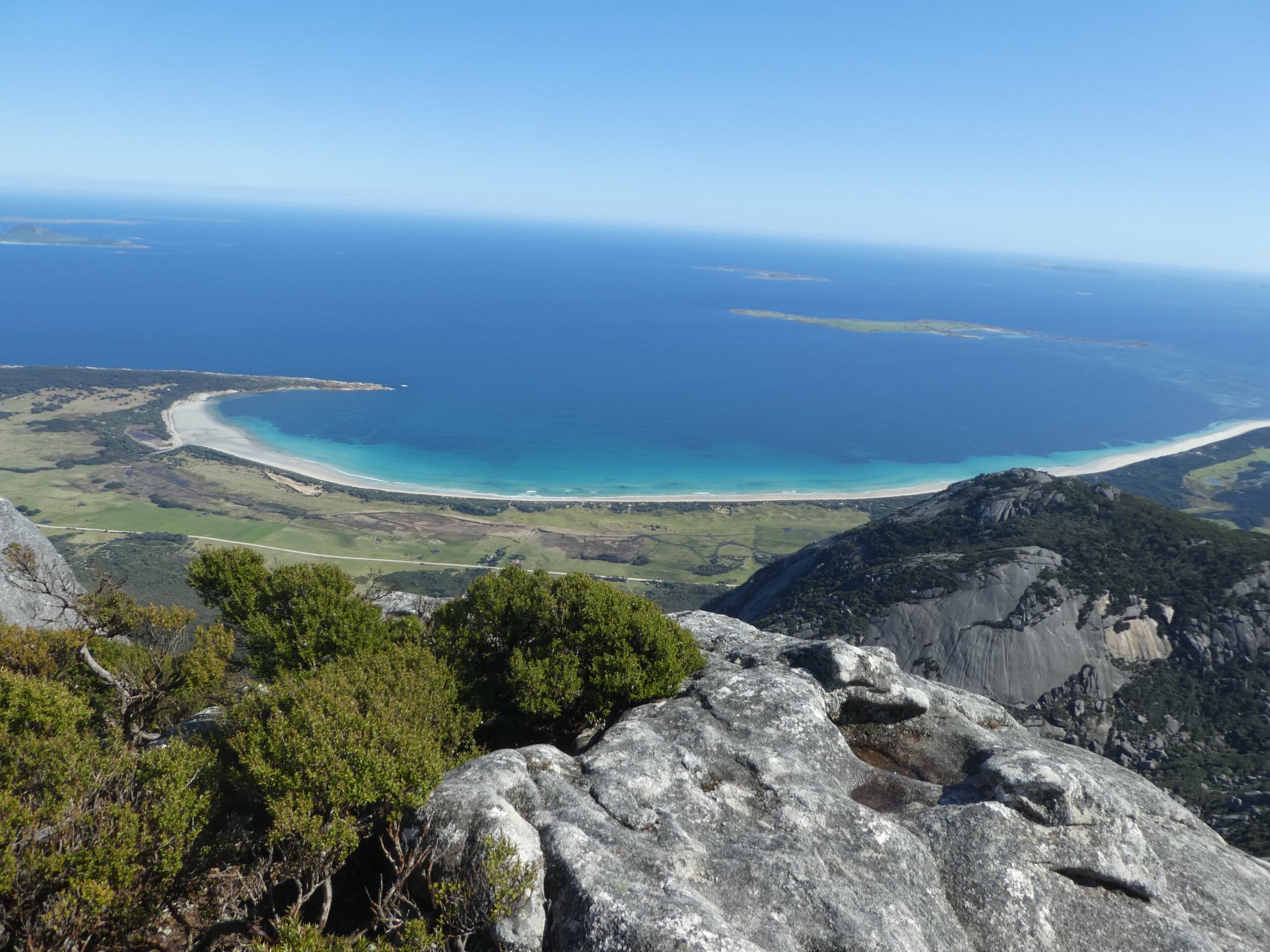 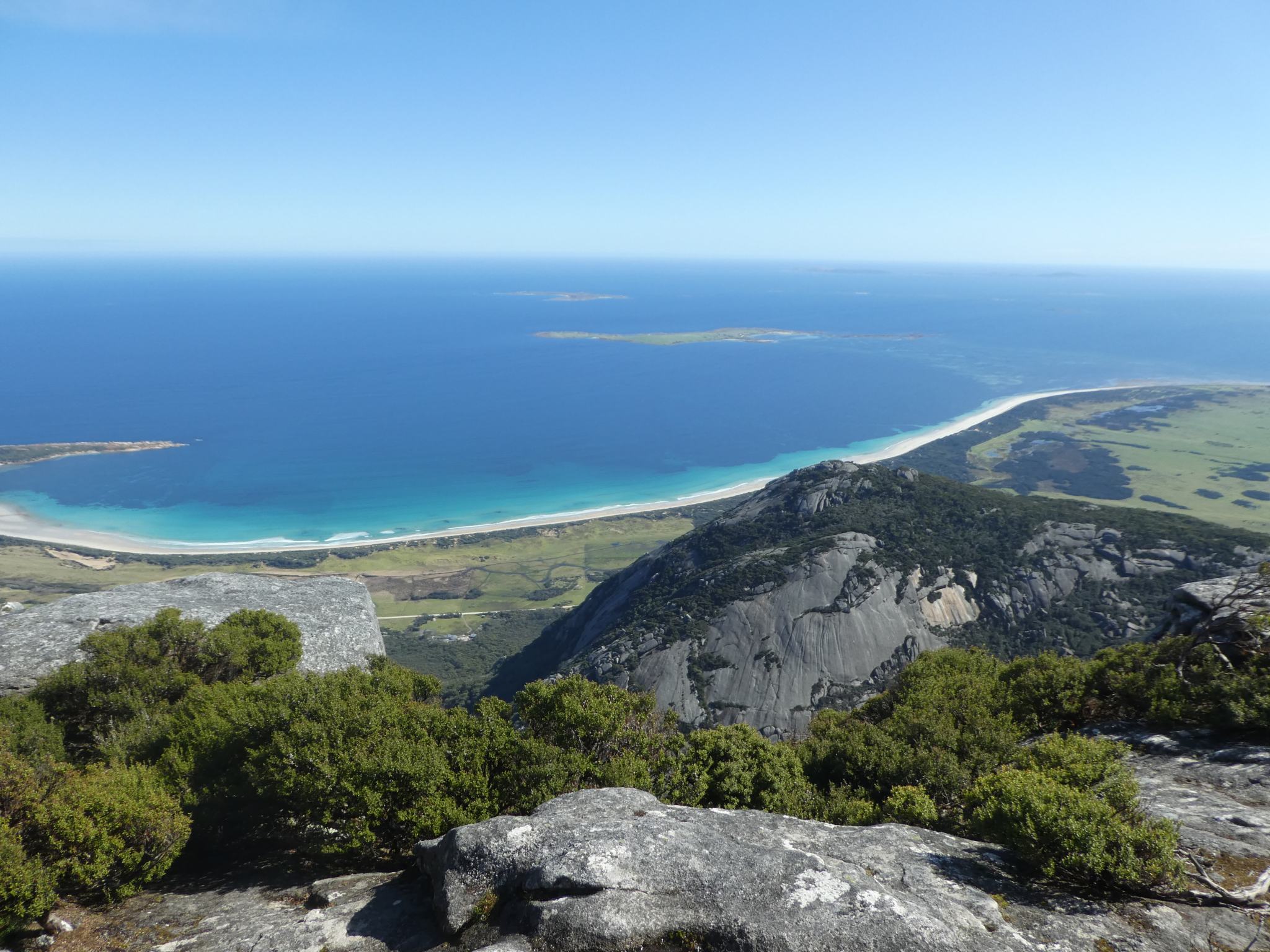 It’s an up-and-back track, so to come down is simply to retrace the route up.  A moderately tough climb, but well worth the effort.

Another great meander, this one started right outside the house we’d rented.  It begins with a long walk around the full arc of Killiecrankie Beach.  Here’s the view looking back. 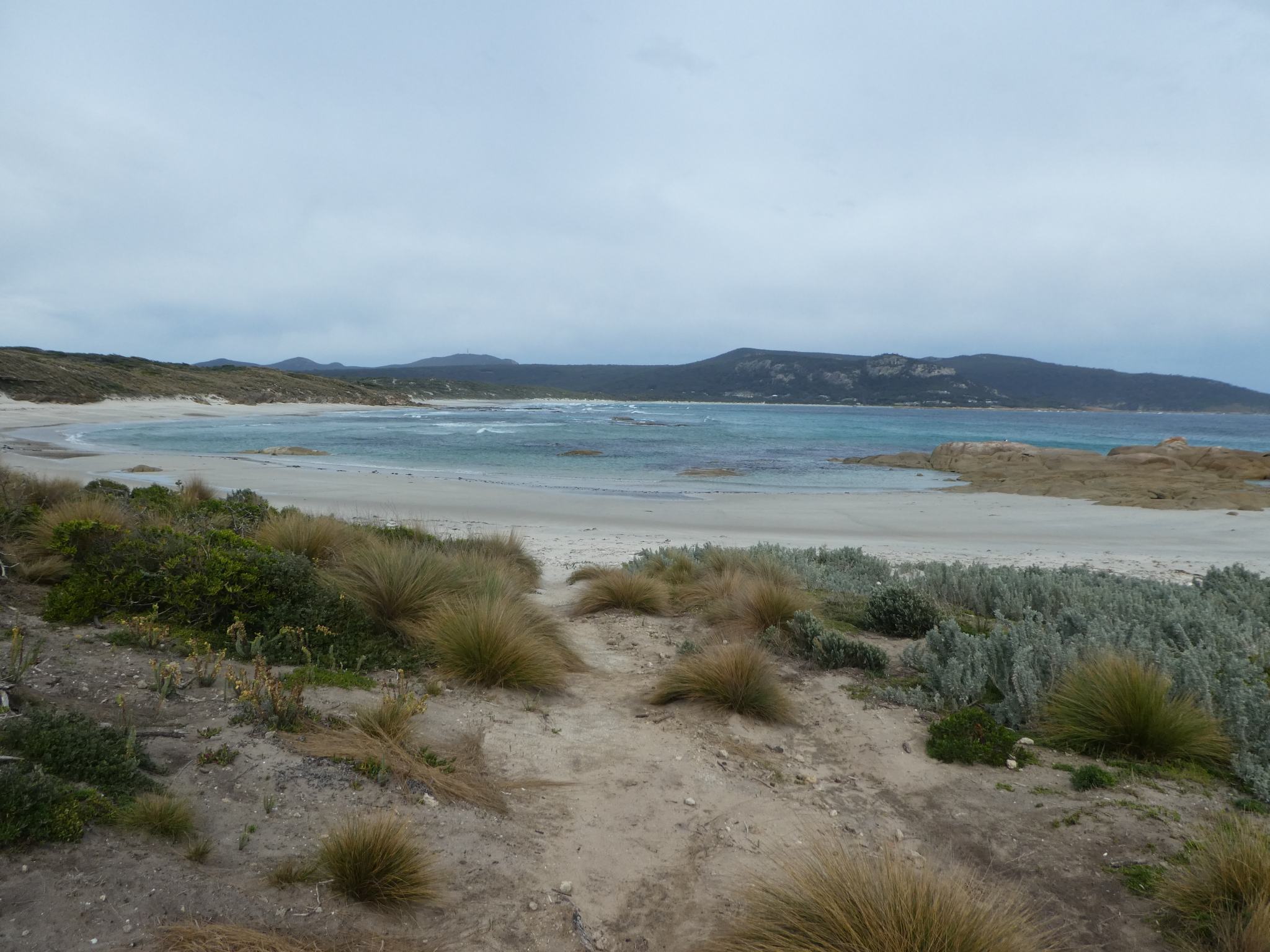 At the far end of the beach, you can either rock hop over the boulders to the next beach or head up a short sandy path to a vehicle track which cuts around the top. 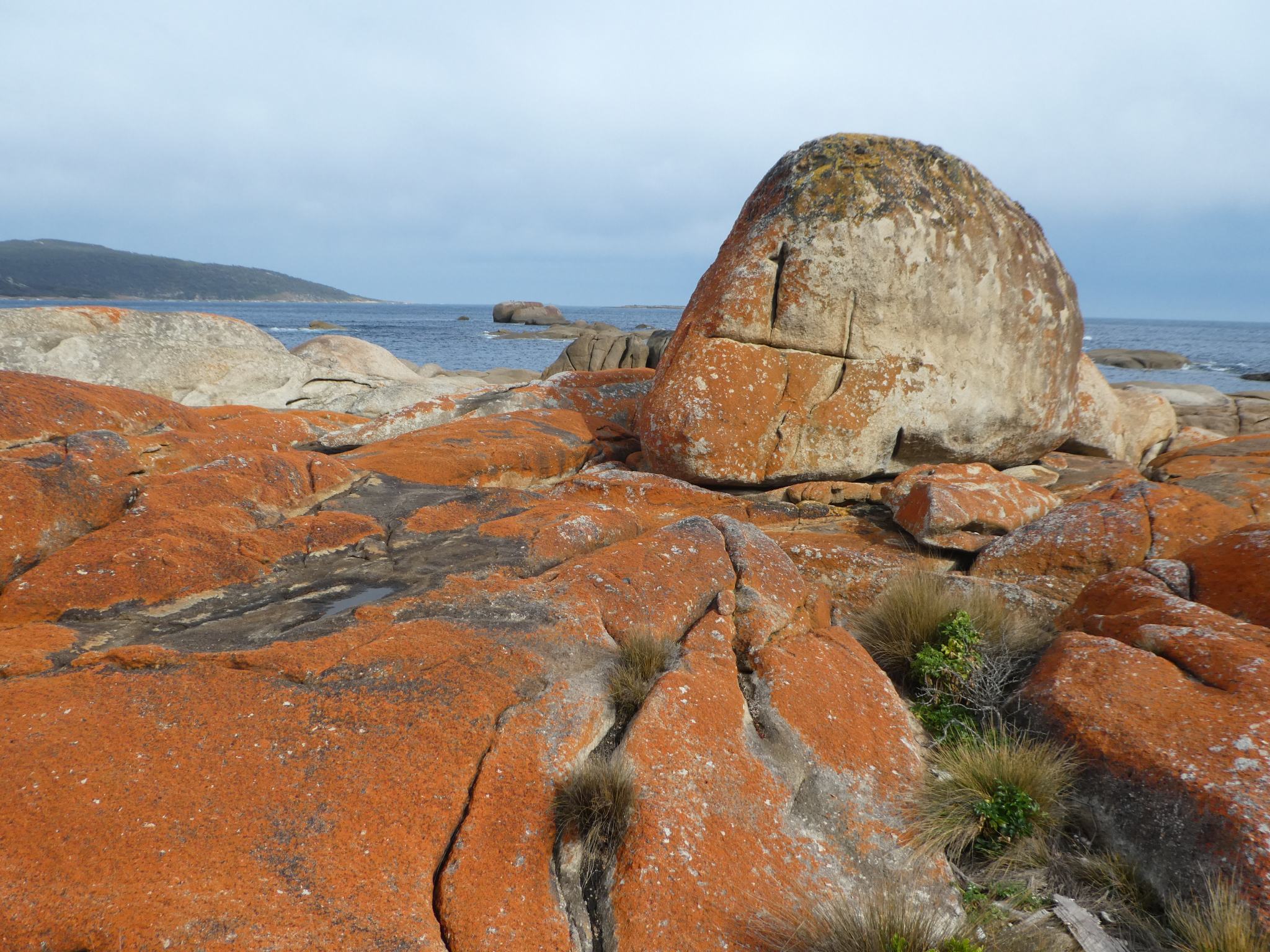 After the boulders is a small rocky gully popular with fossickers seeking Killiecrankie diamonds.  These are actually a form of topaz, found only on Flinders Island.  Topaz from elsewhere in the world is generally yellow or brown, but these unique stones range from brilliant white to ice blue and pink depending on tints from tin and feldspar present at the time of formation.

A wide walking trail continues along the coastline, eventually narrowing to pass  through a short stretch of bush land above a rocky shelf looking down to a sheltered cove at Stacky’s Bight. 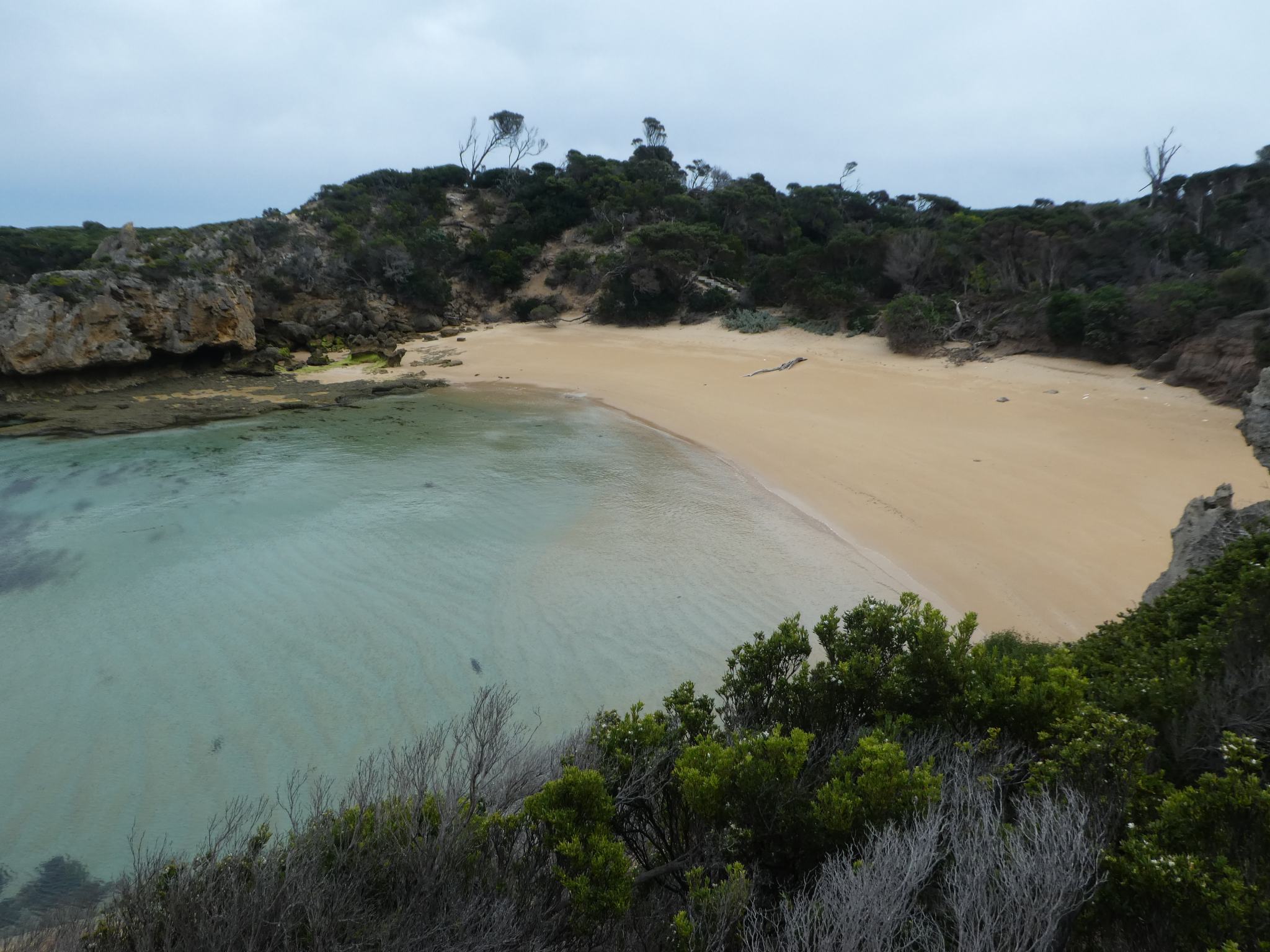 The track descends to the beach, at the far end of which is an unusual rock arch. 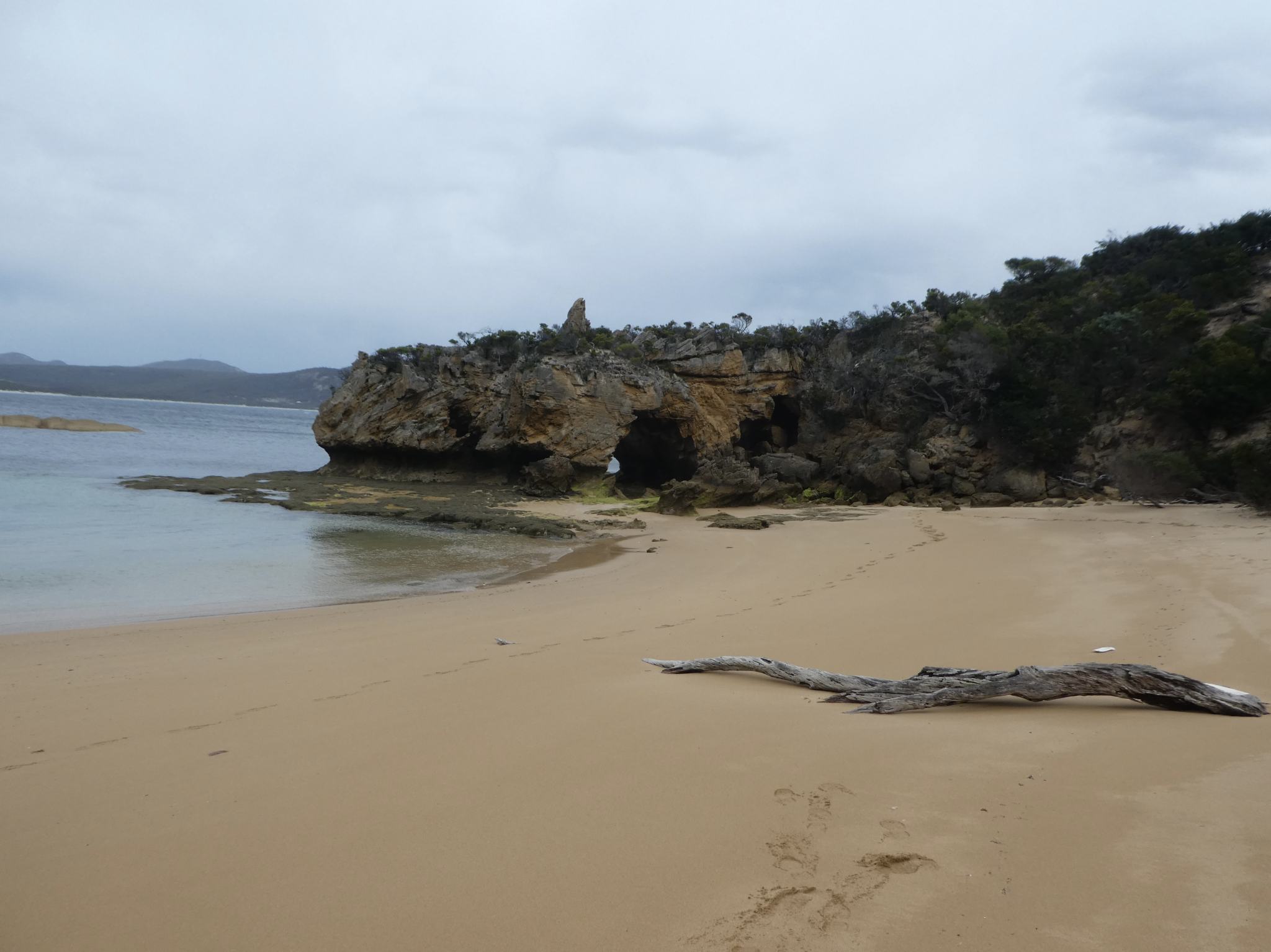 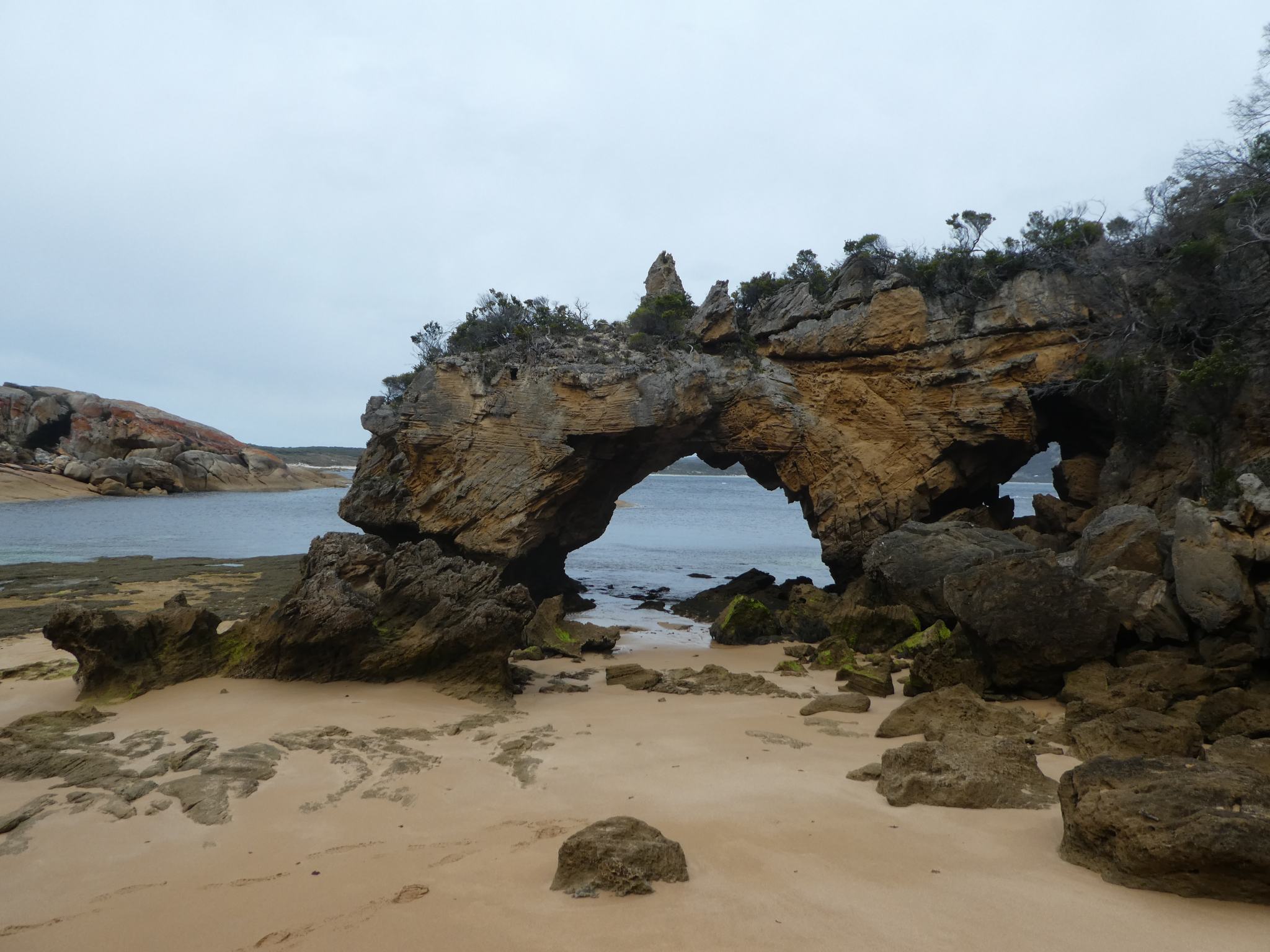 Steps about half way around the arc signal the start of a short walk up to a headland above, from which there are views back to where we started. 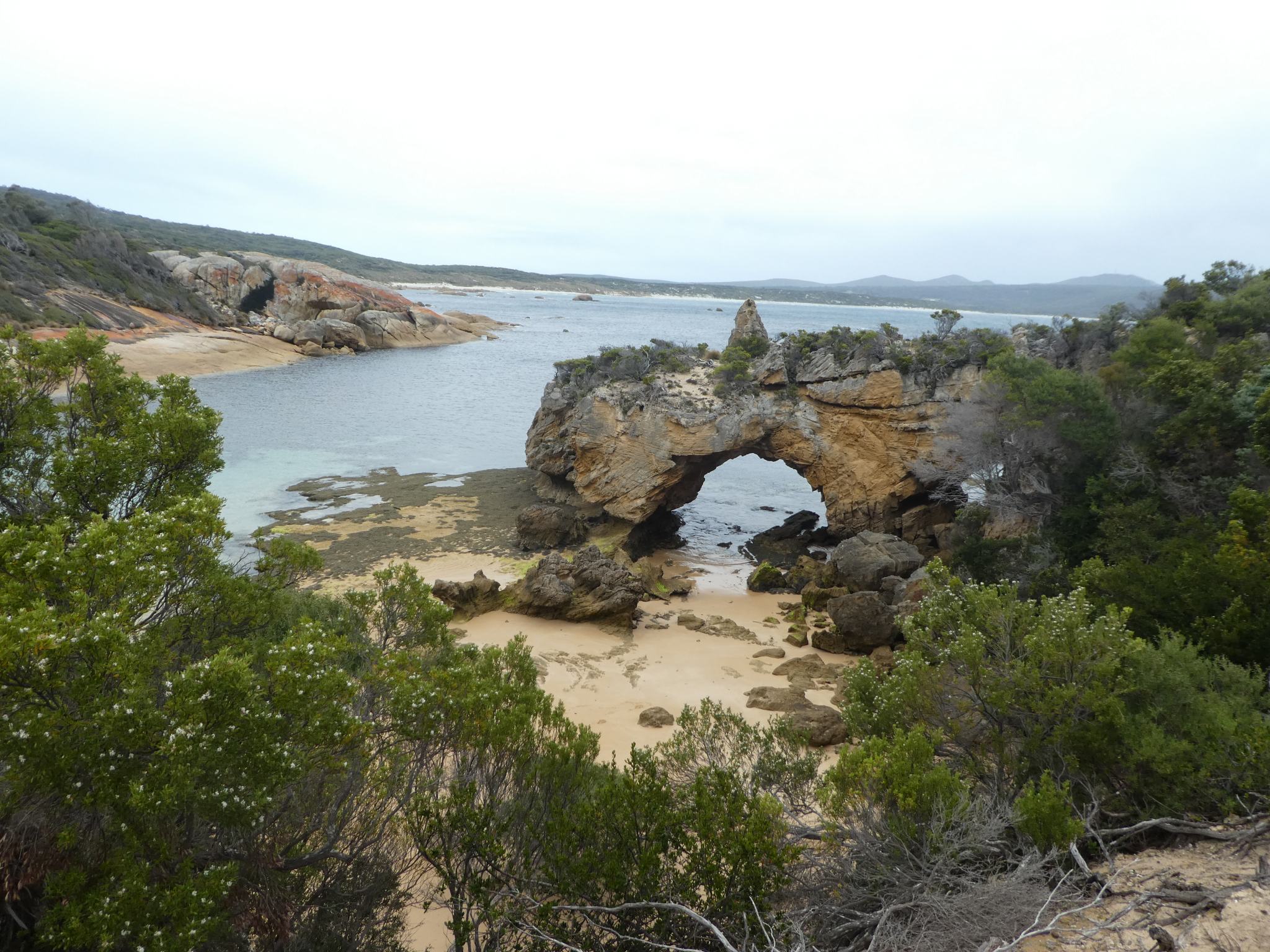 It is possible to continue on around the headland to join a track which leads to the ascent of Mount Killiecrankie, but there’s no specific trail linking the two and the weather looked like it was closing in, so we headed back to our Killiecrankie house.

Killiecrankie village, 40km north of Whitemark, has a population of 38.  Needless to say, it’s serenely quiet.  Our house overlooked Killiecrankie Beach, with great views and wallabies grazing on the lawn every afternoon. 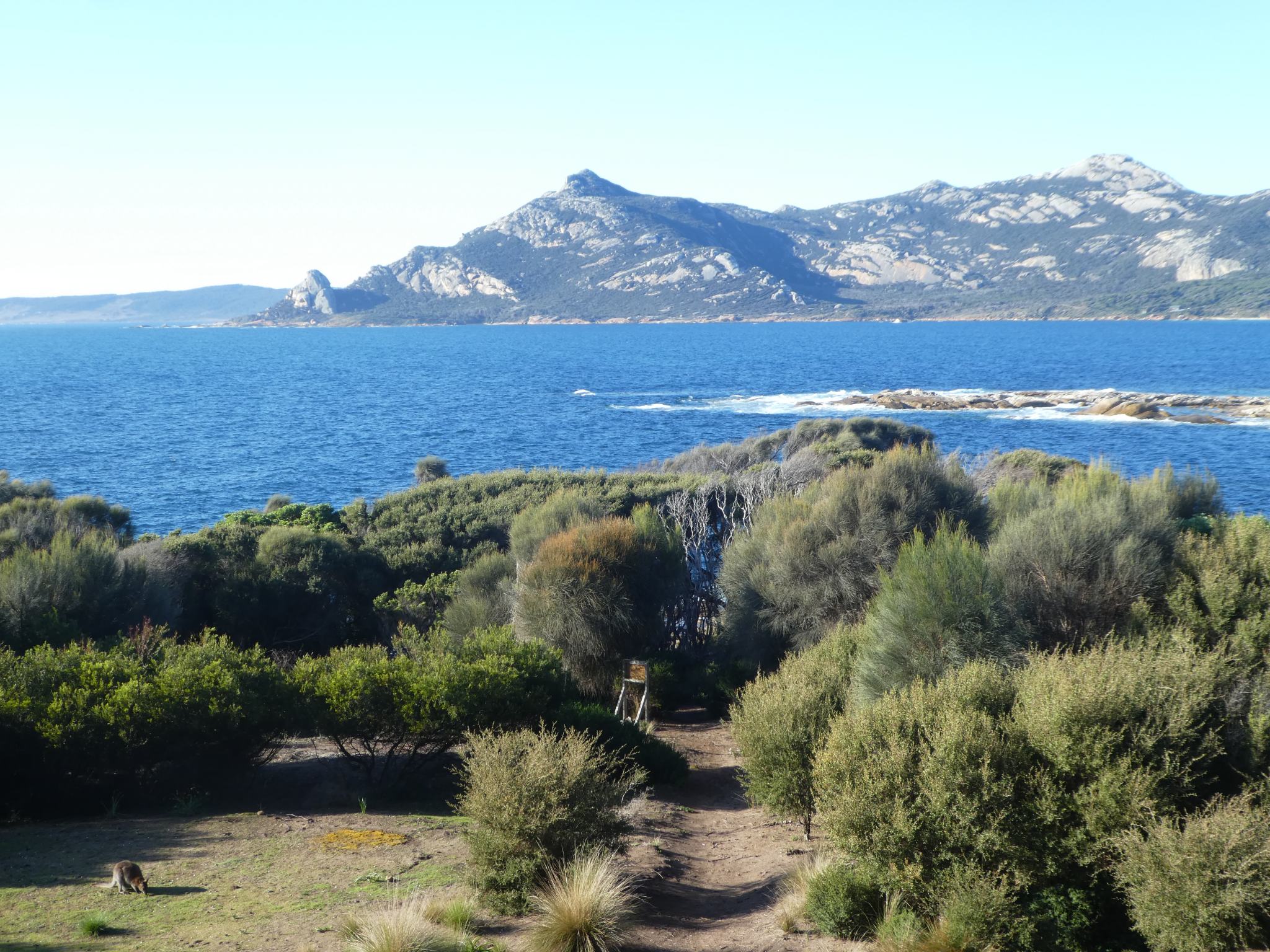 They were so cute, it almost made us feel guilty about the wallaby schnitzels we’d picked up at the Whitemark butcher for dinner.  Almost, but not quite.

Flinders Island really is a hidden gem.  There were many other walking trails which we didn’t have time to explore.  The waters are crystal clear and rubbish free.  People are friendly, and for such a small population, there’s some surprisingly good eating options.

At local institution the Furneaux Tavern, locals leave their wallet and keys on the bar when they go outside for a cigarette.   No one locks their cars.  Drivers invariably give you the ‘Flinders wave’, a casual raising of the index finger from the steering wheel as vehicles pass each other, just to say ‘good to see you’.  It’s that kind of place.