Arras rose to prosperity in the Middle Ages from cottage industry cloth production.  Tapestries made here were particularly fine, indeed they were so highly regarded that the English word for tapestry at the time was simply ‘an arras’.  A bit like the way the Brits call any vacuum cleaner ‘a hoover’.

In the 17th century, wealthy merchants built townhouses around the market square, which became ‘La Grand Place’.  Built in the Flemish Baroque style popular in northern France at the time, the houses were characterised by scrolled gables and colonnaded arcades around the perimeter.

80% of Arras was destroyed in WWI, but La Grand Place and its historic townhouses were rebuilt, faithful to the originals, in the post-war reconstruction years of the 1920s and 30s.  So here we have now 100 year old reconstructions of 400 year old buildings.  It’s a marvellous place to wander around. 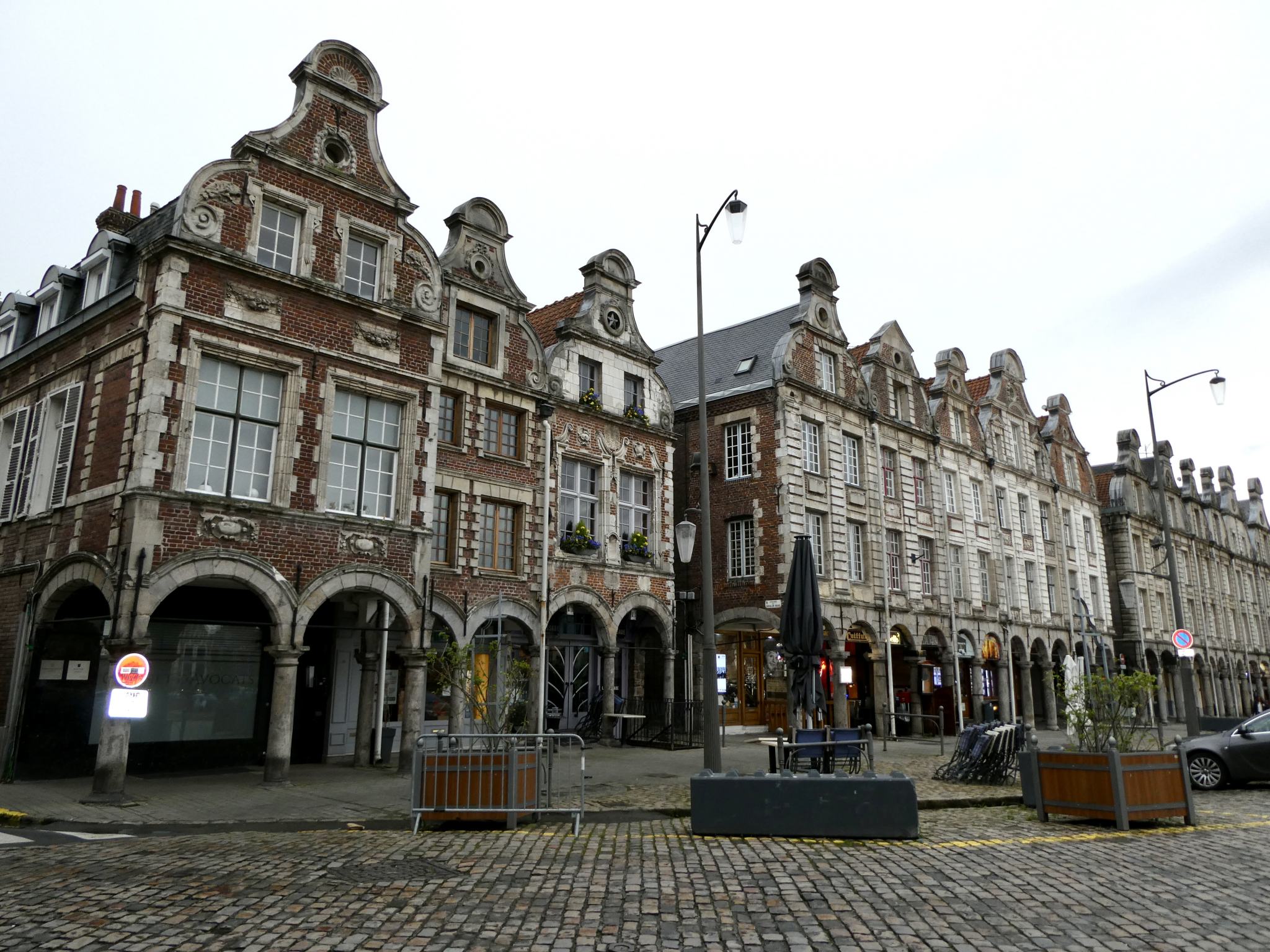 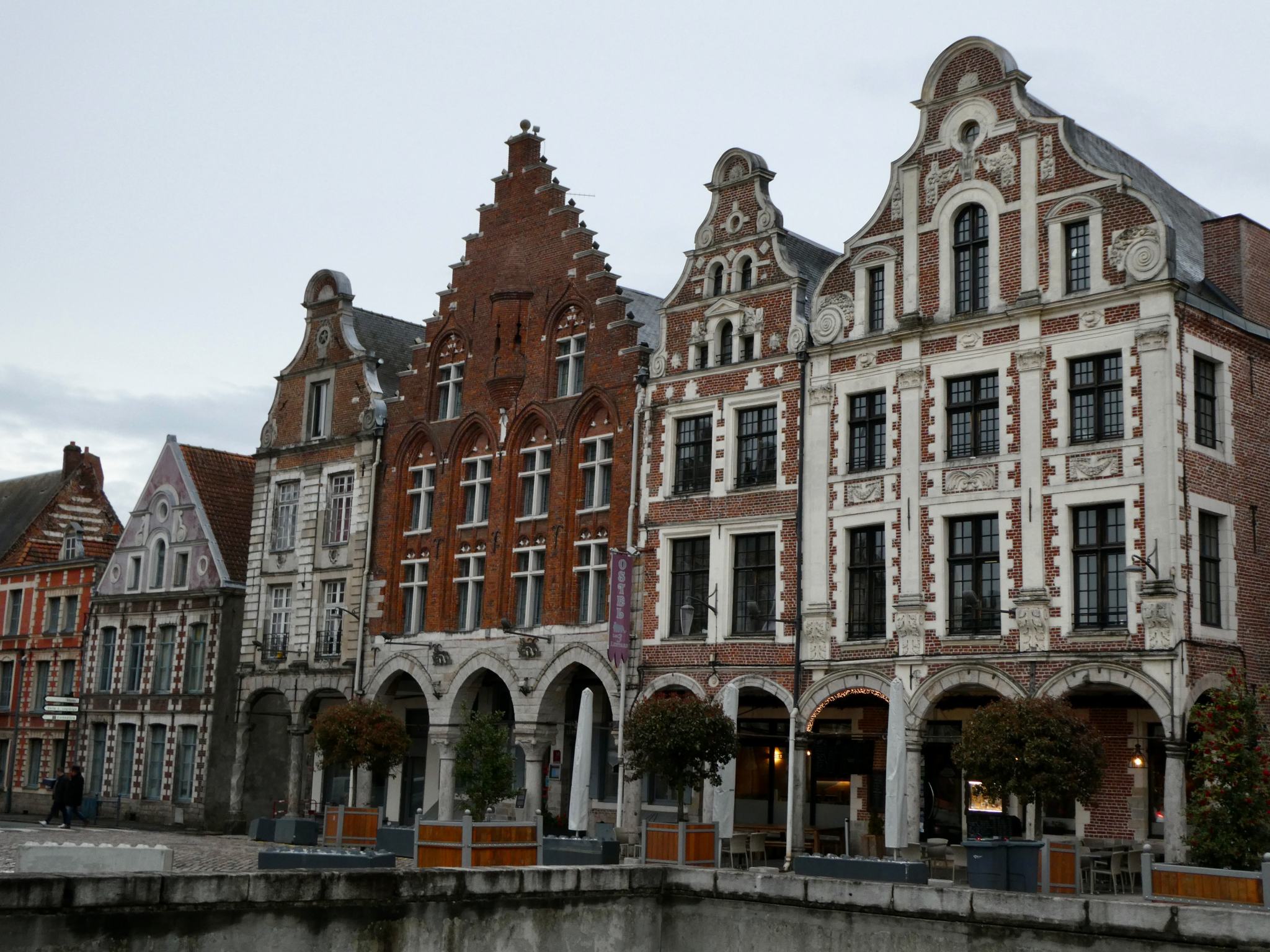 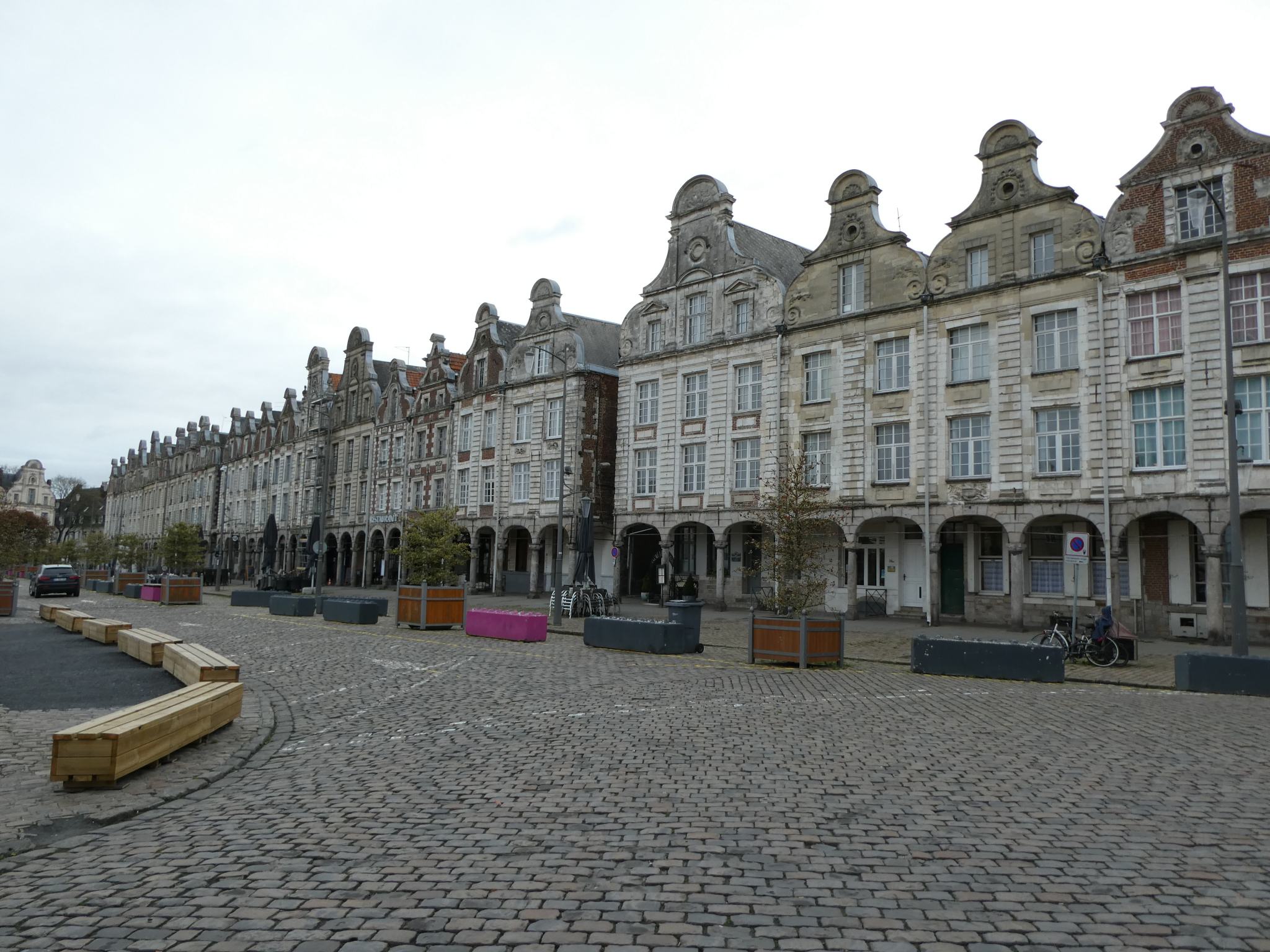 A short street connects to another square.  First known as Petite Place, it was re-named Place des Heros after WWI, in honour of the soldiers who died in the defence and ultimately the liberation of the city.  It was also faithfully reconstructed between the wars.  Lots of bars, cafes and restaurants hide under the arches or in subterranean caves (cellars) below street level. 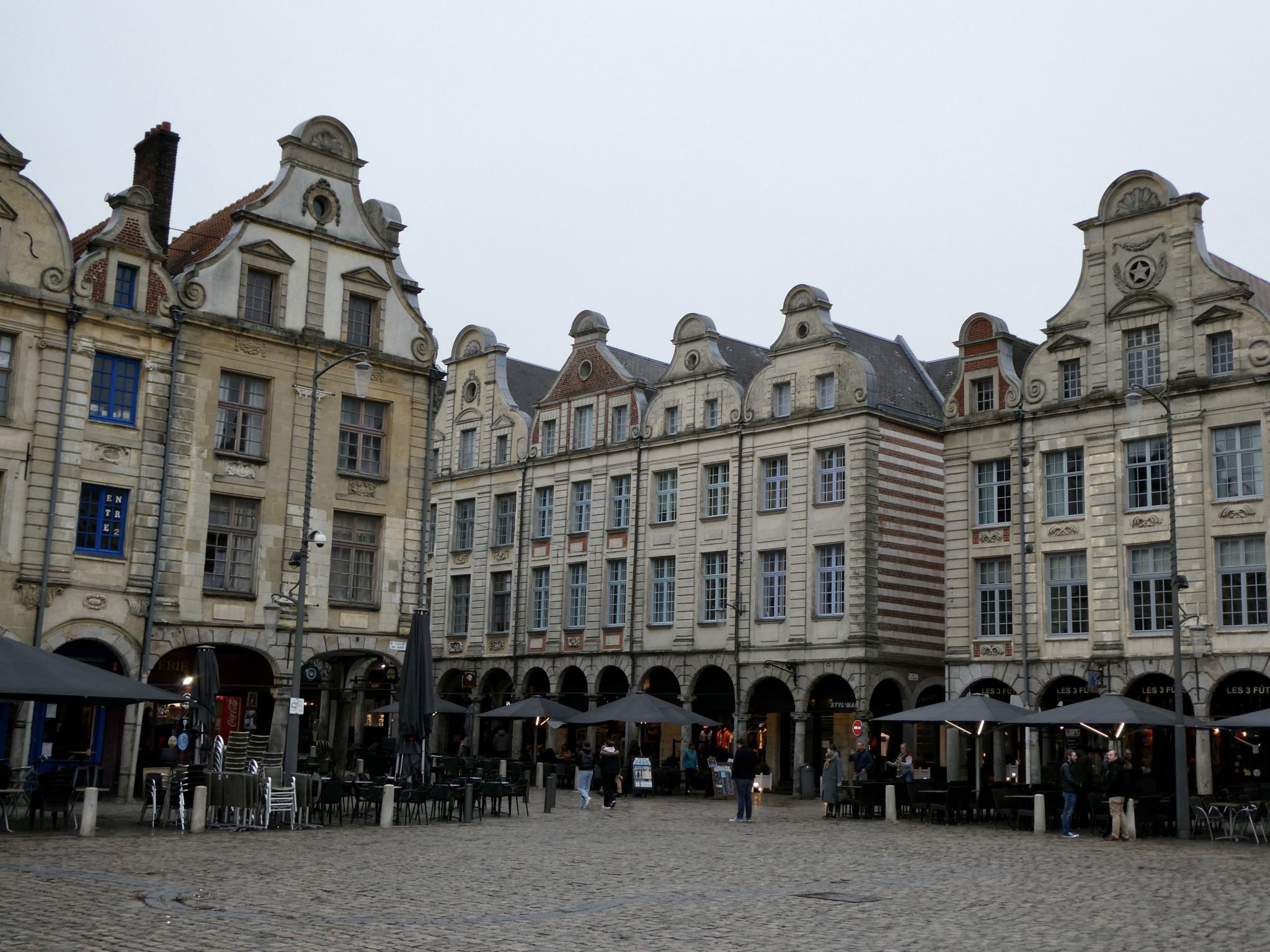 At the head of the square is the Hotel de Ville (Town Hall) completed in 1517 in Flamboyant Gothic style.  Almost completely destroyed by bombs in WWI, it also was rebuilt in the 1920s.  The gold decorations on the roof are very fine indeed. 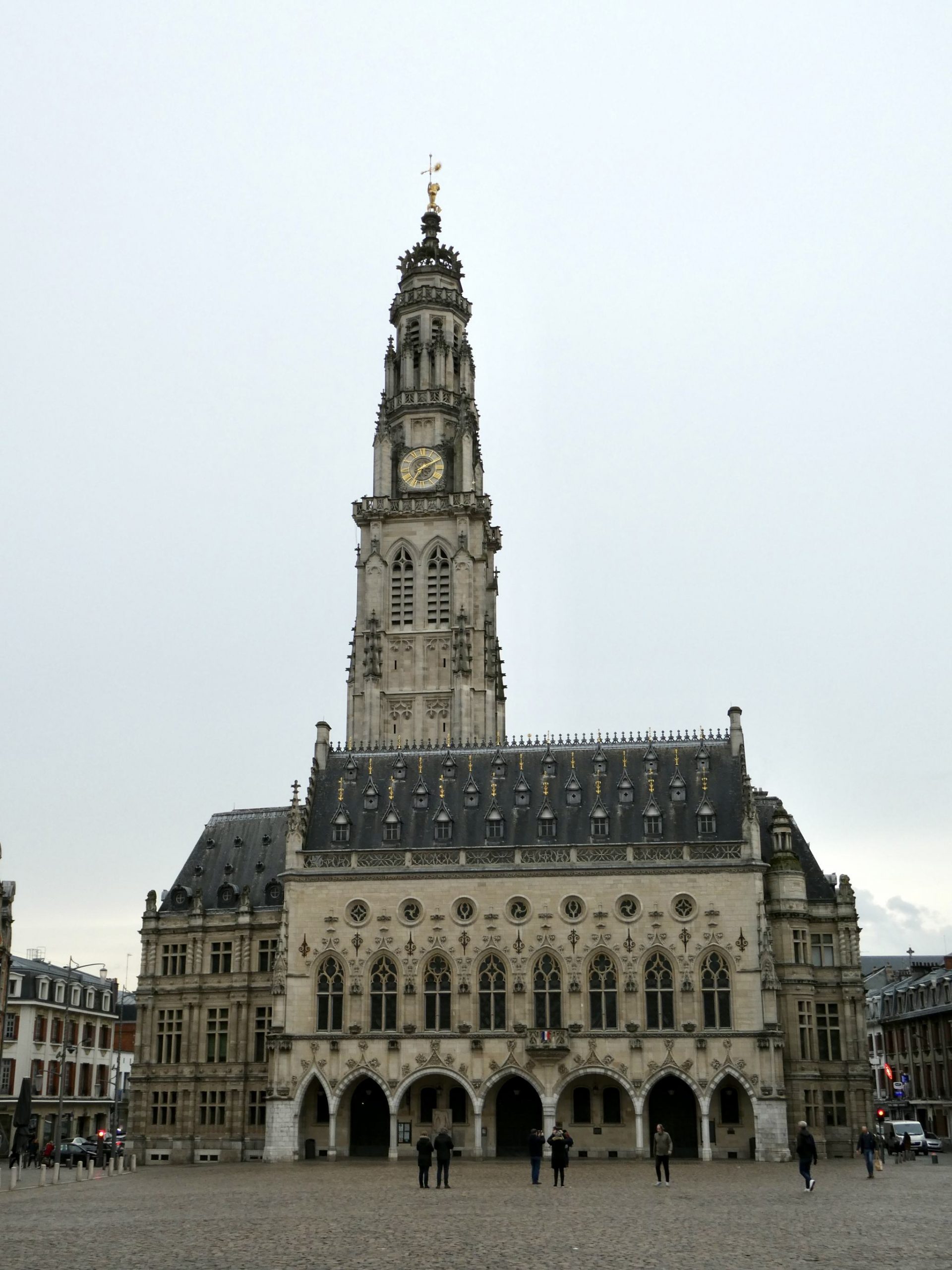 In the foyer are 4 geants (giants).  Geants have been part of popular folklore in northern France since the early 1800s.  Arras’ original geants, Colas and Jacqueline were first created as wicker mannequins, 6.25 metres high, in 1891 and brought out in annual festivals.  While some towns chose heroic figures such as knights for their geants, Arras chose market gardeners in reference to the town’s agricultural and mercantile heritage.

Unfortunately the originals were destroyed by German bombing in WW1, and copies made after the war were destroyed in WW2.  It was not until 1980 that Colas and Jacqueline were built again, this time ‘only’ just over 4 metres tall.  In 1995 they were joined by a son, Dede.  They are now are paraded annually at the Arras Festival and occasionally appear at other festivals, usually during Lent. 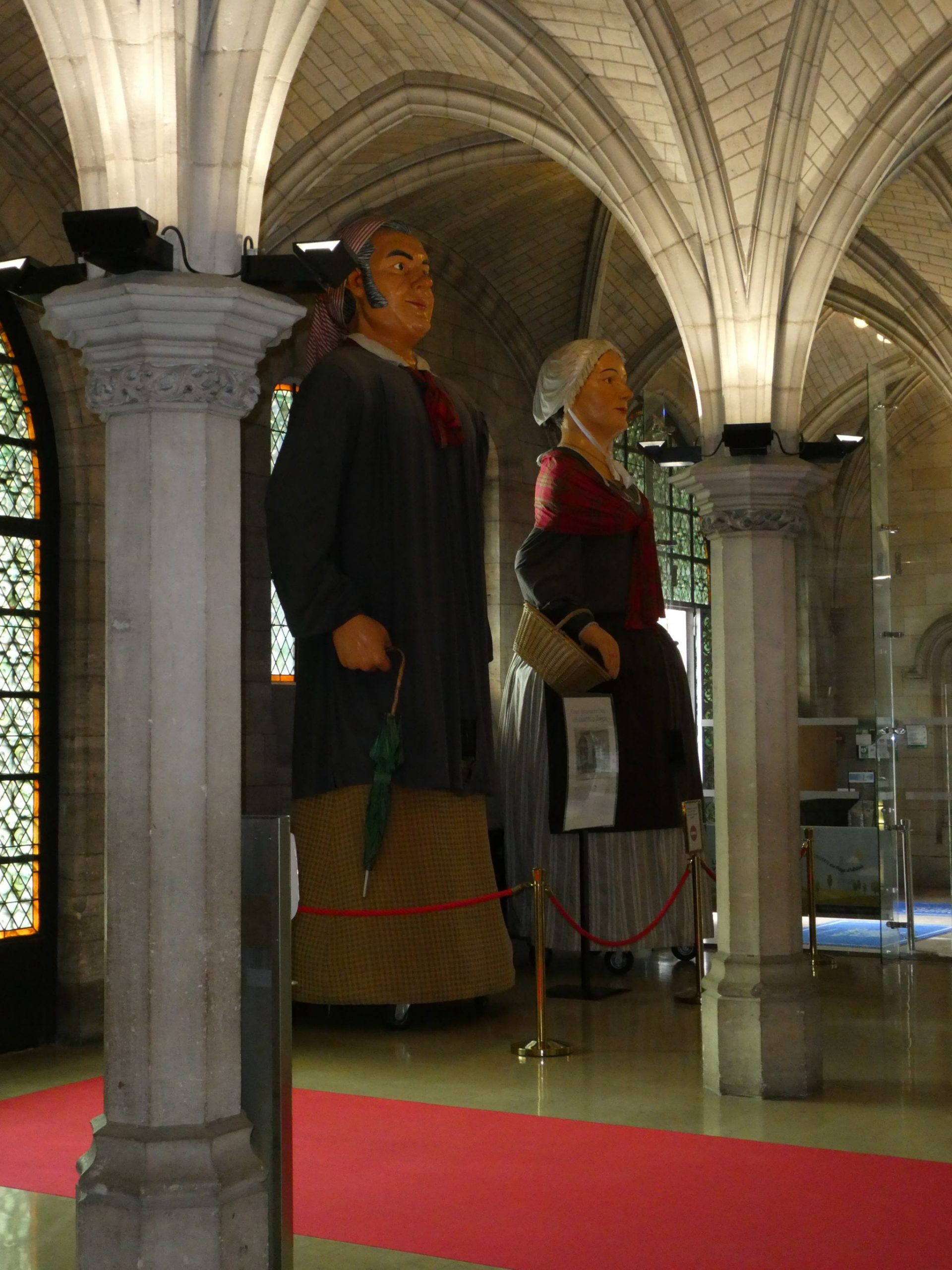 It’s also possible to do guided tours of the boves under the town hall.  Bove is an old French term describing an underground cave created by quarrying.   Beginning in the 9th century, the boves were dug out to obtain limestone for the construction of the city’s religious buildings and ramparts.   Later the quarried out caverns were used by merchants for storage. 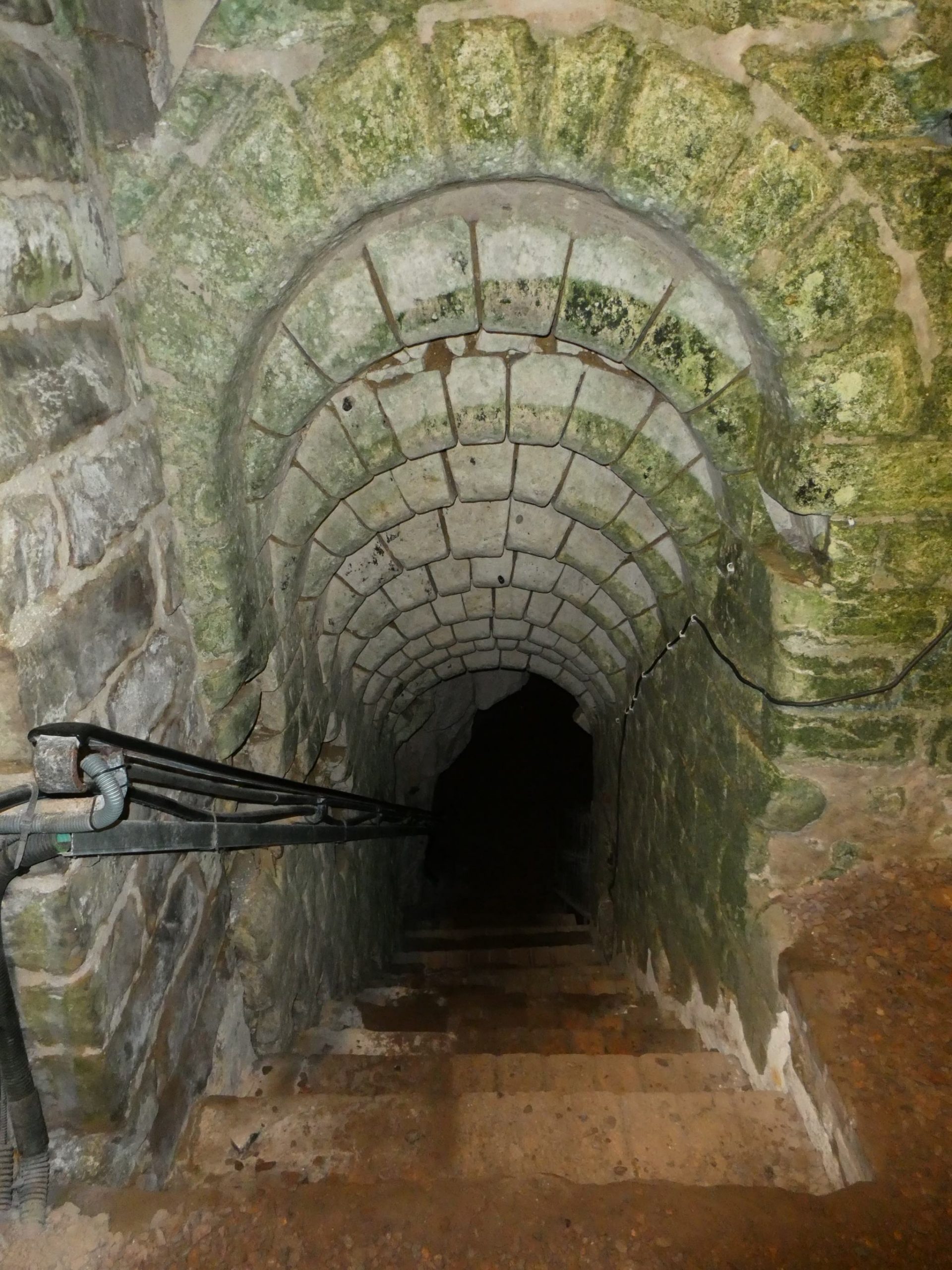 Sitting 12 metres below the town hall and spreading out over 20km, the boves are a chilly 11 degrees Celsius year-round.  Perfect for storing cheese and wine.  But the damp was not so great for grains and flour.  Eventually they fell into disuse.

Although never totally forgotten, the boves lay dormant until WW1.   Arras was just inside the British held territory in northern France, the German front line was only a few kilometres away, and both sides were dug in.  A plan was hatched to connect the boves and extend the underground network by tunnelling toward the German front line.

For more on this, we also visited the Carriere Wellington (Wellington Quarries) a couple of kilometres away.  This is a compelling museum set up inside the old quarried tunnels.  In short, in the second half of 1916, just under 500 men of the New Zealand Tunnelling Company – that’s a military company, not a commercial company – were assigned to create a series of tunnels reaching the German front lines several kilometres from Arras.  They achieved this by joining up and enlarging the existing quarried caves and then tunnelling even further toward the lines.  They manually excavated 80km, at an average rate of 80 metres a day.

The tunnels were complex and rather sophisticated for their context.  They were lit by electricity and supplied by piped water.  There were gas-proof doors at the entrances.  A cabled telephone system was installed and an underground tram operated. There was even an underground hospital. 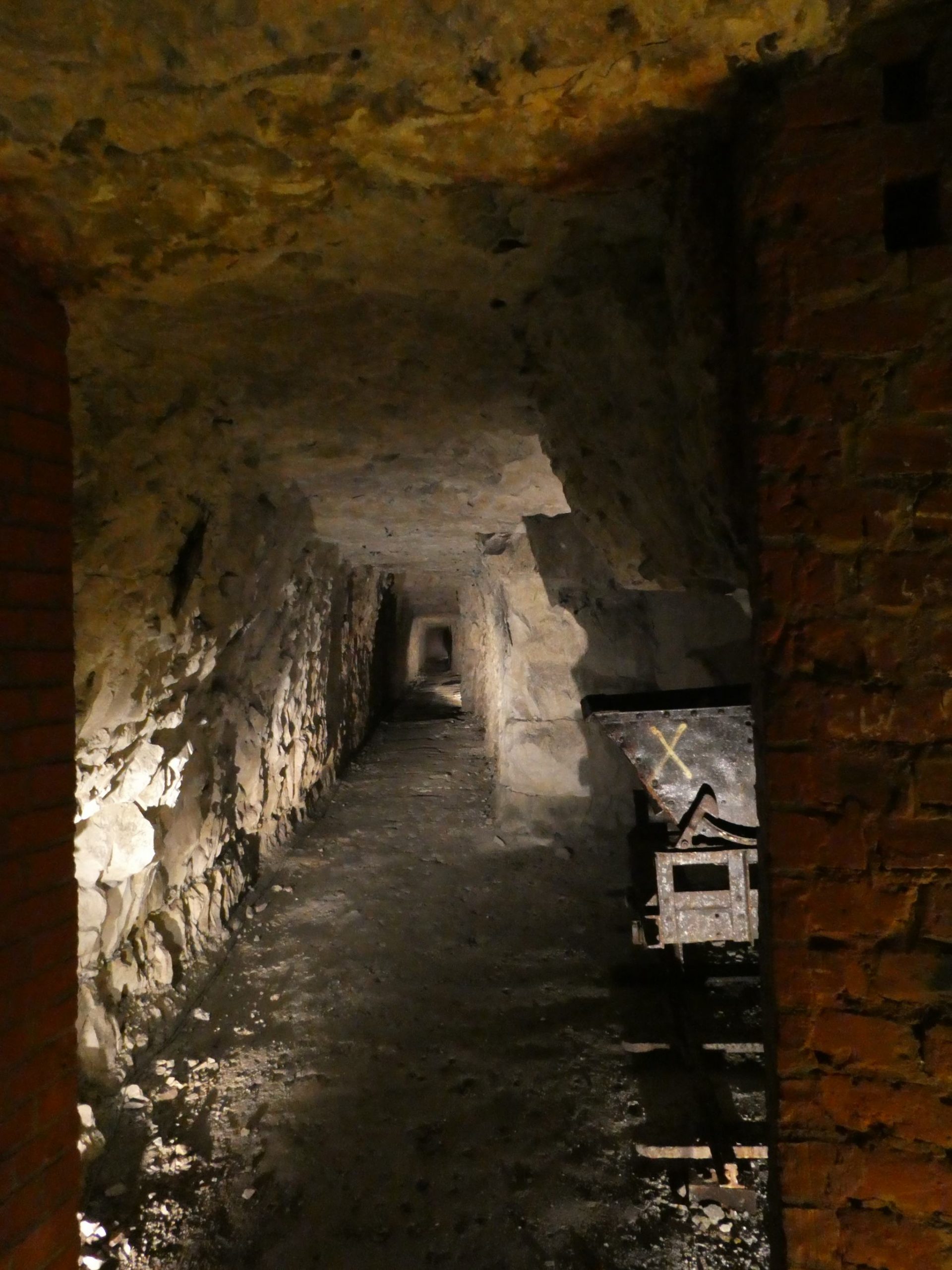 There were several such quarries, some ultimately interconnected.   NZers named this one the Wellington Quarry.  Others included Blenheim, Auckland and Russell, but only Wellington is open for visitors.

After completing the tunnels and laying explosives at strategic end points, troops massed underground for a week, waiting.  Amazingly, all this was achieved without the Germans catching on.  At 5.30am on 9 April 1917, the explosives were detonated and 24,000 troops under British command erupted from the tunnels, taking the Germans by surprise and marking the commencement of the Battle of Arras.

It was the coldest April day on record in Arras – freezing conditions and deep snow on the ground – yet the troops were ordered not to wear their coats so they could run faster.  It must have been horrendous.

Perhaps the tunnels were effective, as the troops made good progress initially.  But after a few days, any advantage was lost.  Approval for the campaign had been given on the basis that if the German lines had not been broken through in 2 days, the troops would be withdrawn.  But once it commenced, ‘the plan changed’.  General Haig ordered the battle be continued on the justification of drawing German troops away from an attack led by French forces further south.  The French offensive failed nonetheless, and when the Arras campaign was finally halted after 38 days, the British had lost 158,000 men and the Germans 130,000, with no appreciable change to either side’s position.

A guided tour of a section of the Wellington Quarry includes an excellent commentary and really clever use of multi-media to explain the tunnelling work and the experiences of the men involved. 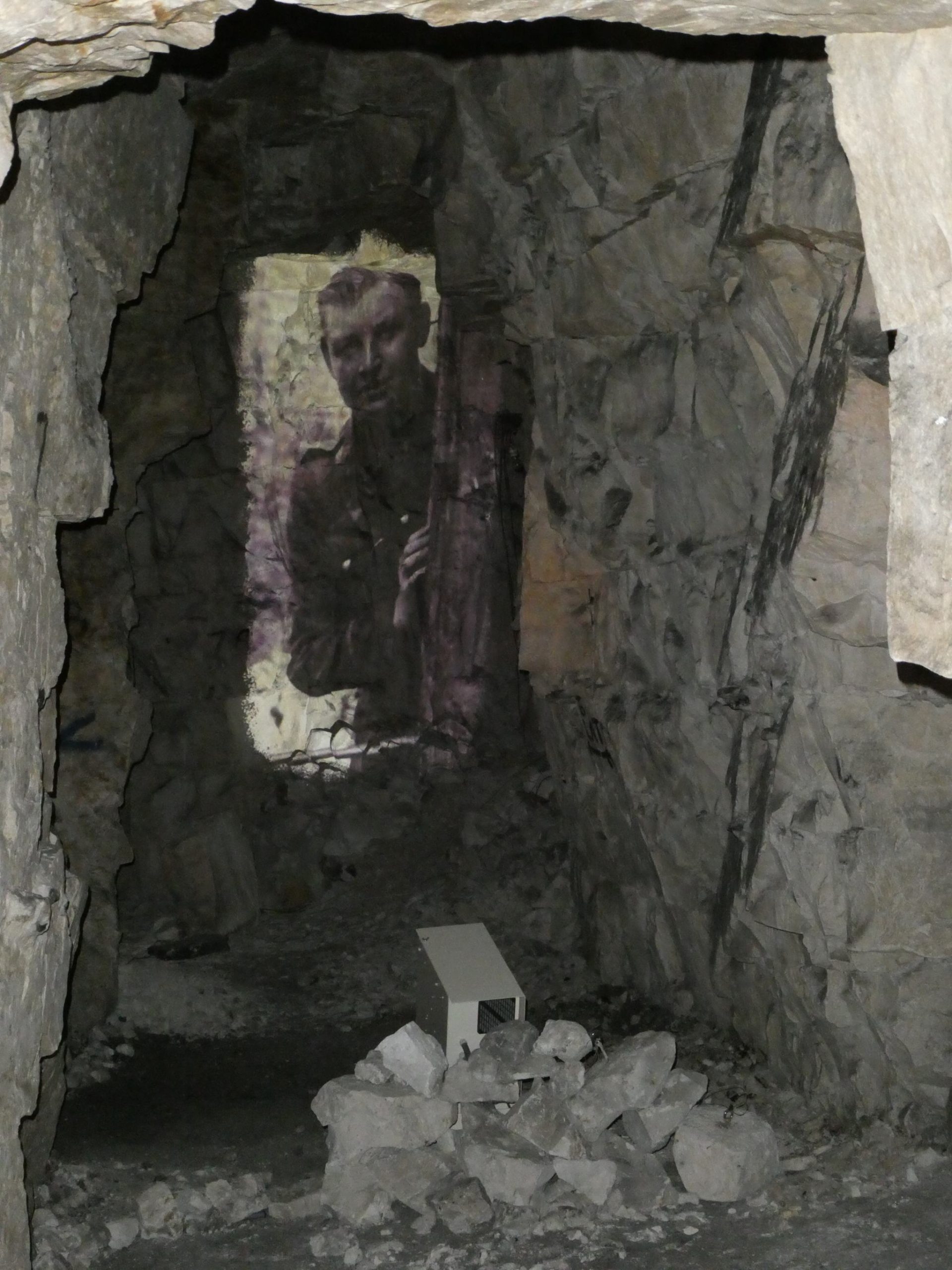 Outside there is a pictorial tribute featuring photographs of the NZ tunnellers. 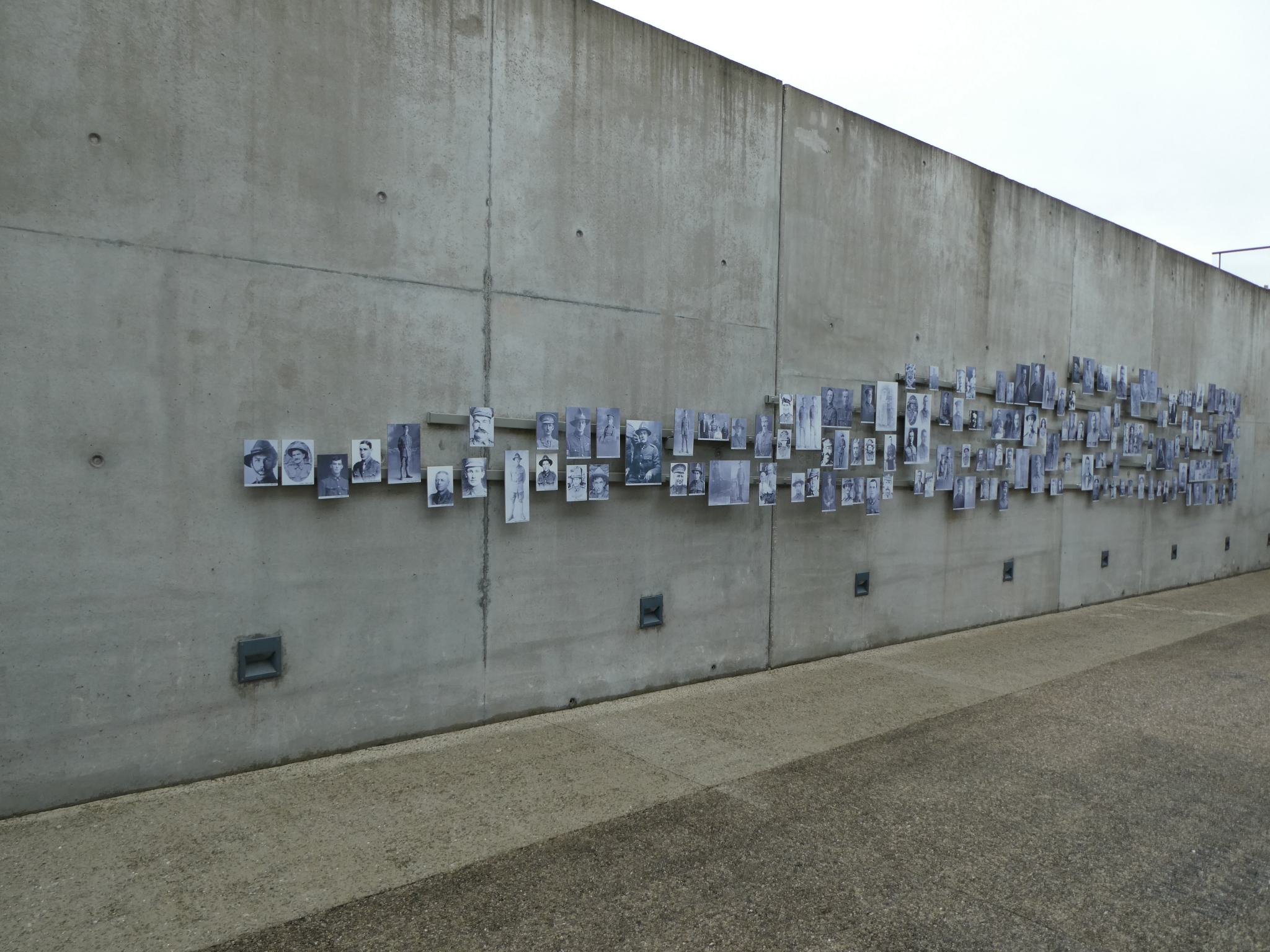 Also a memorial wall honouring the dead of the Battle of Arras. 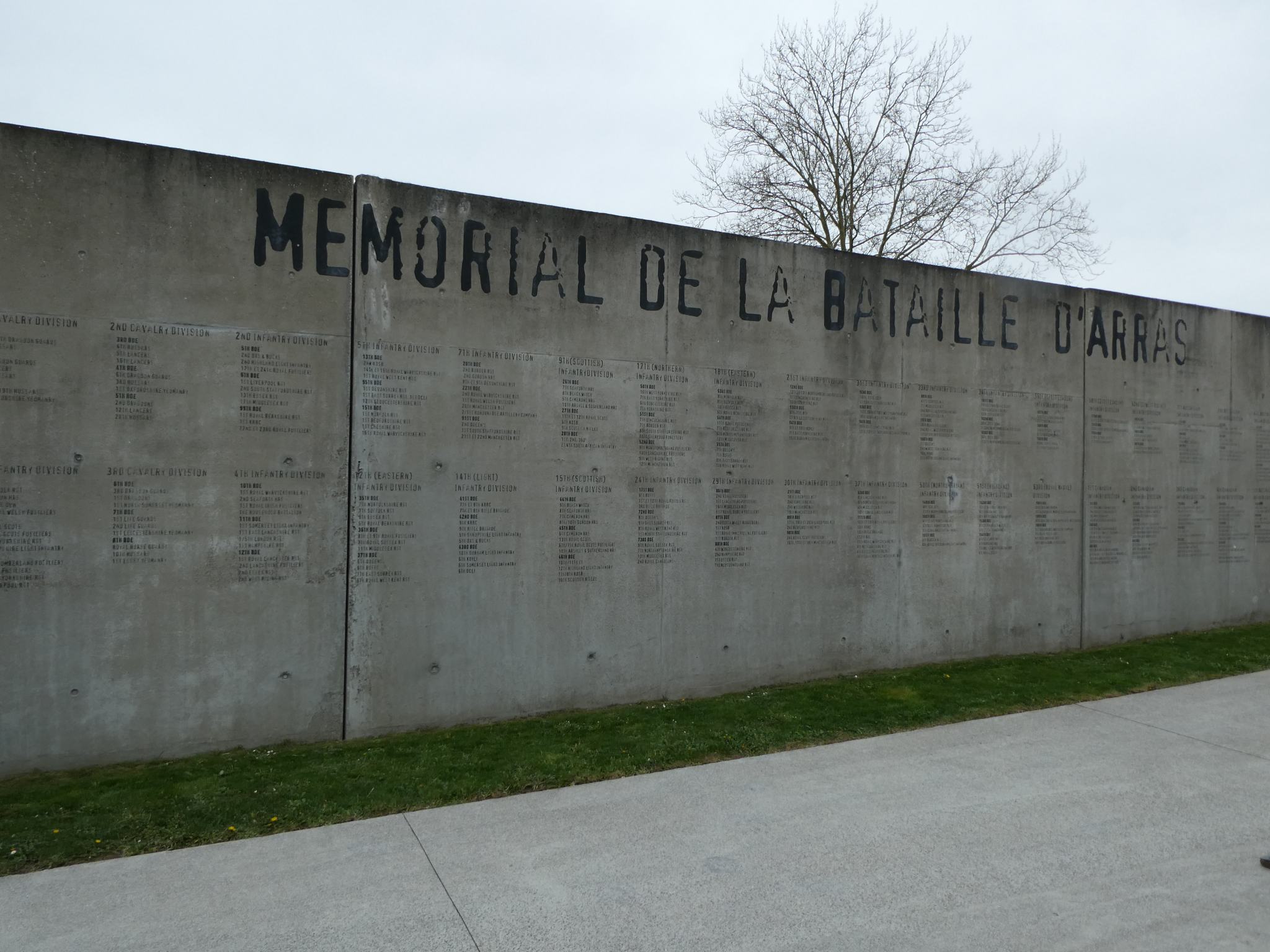 This is one of the best museums we have visited.  If you get the chance, do it.

For our last day in Arras we planned to take the train down to Amiens for a day.

That morning we awoke to find the temperature had plummeted to near freezing point overnight and the forecast for Amiens was rain all day.  We went anyway.  It seemed wrong to be so close and not see the largest cathedral in France.  At least, that’s what Julie thought.  John thought a bistrot and a bottle of red wine would have been a better plan.

The weather in Amiens was as predicted, with a feral gusty wind adding to the challenge.

The cathedral is, well, really big. 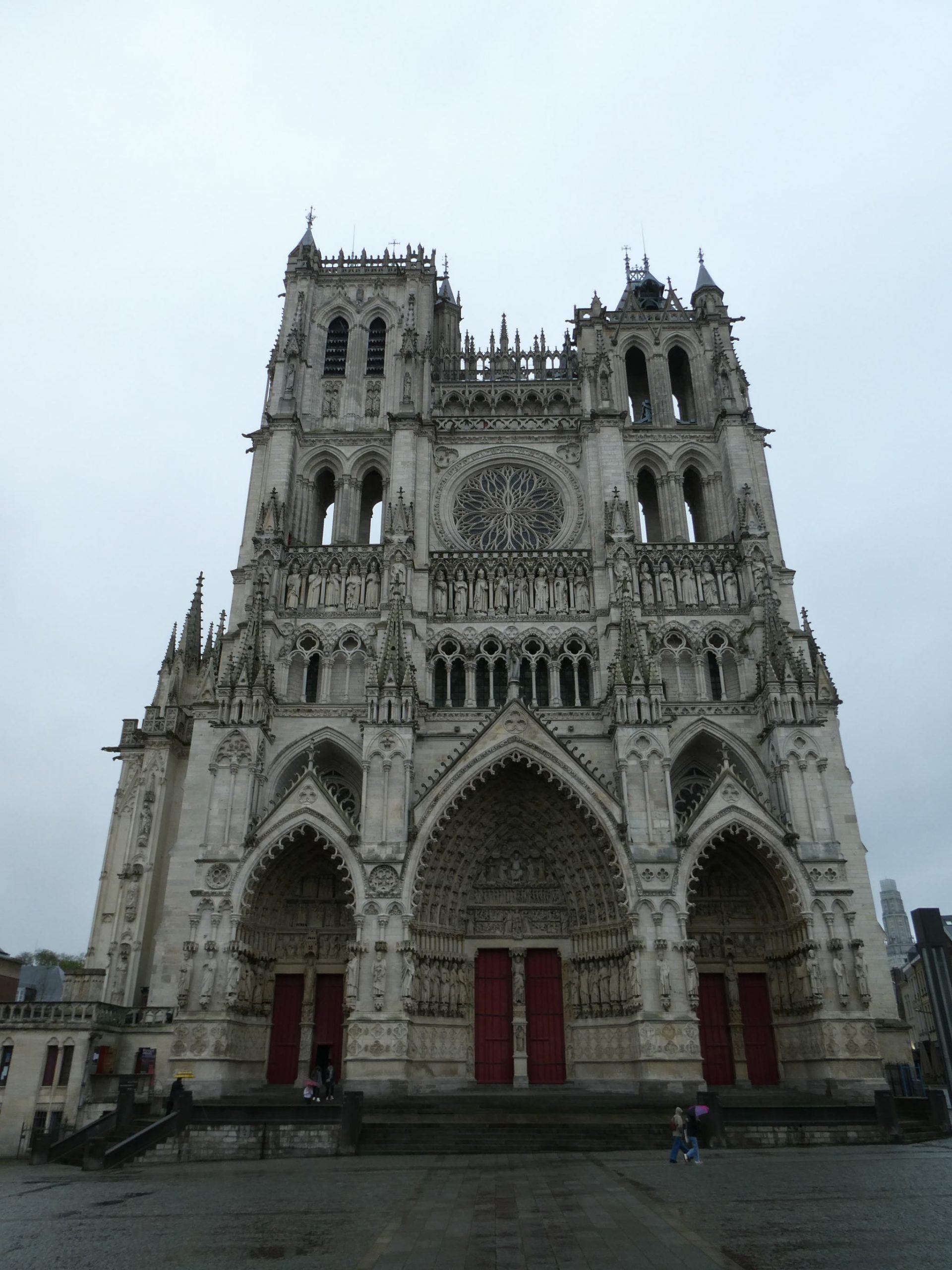 The builders were trying to maximise the internal dimensions in order to ‘reach for the heavens’ and let in more light.  The resulting 200,000 cubic metre interior is large enough to contain Paris’ Notre Dame Cathedral twice over.

Like a lot of other French cathedrals of the day, it has a labyrinth in the central nave.  These were created to remind the faithful that the journey to salvation will be met with obstacles and diversions, but with determination, the goal is achievable.  On certain religious days, pilgrims would shuffle along the 240 metre labyrinth on their knees. 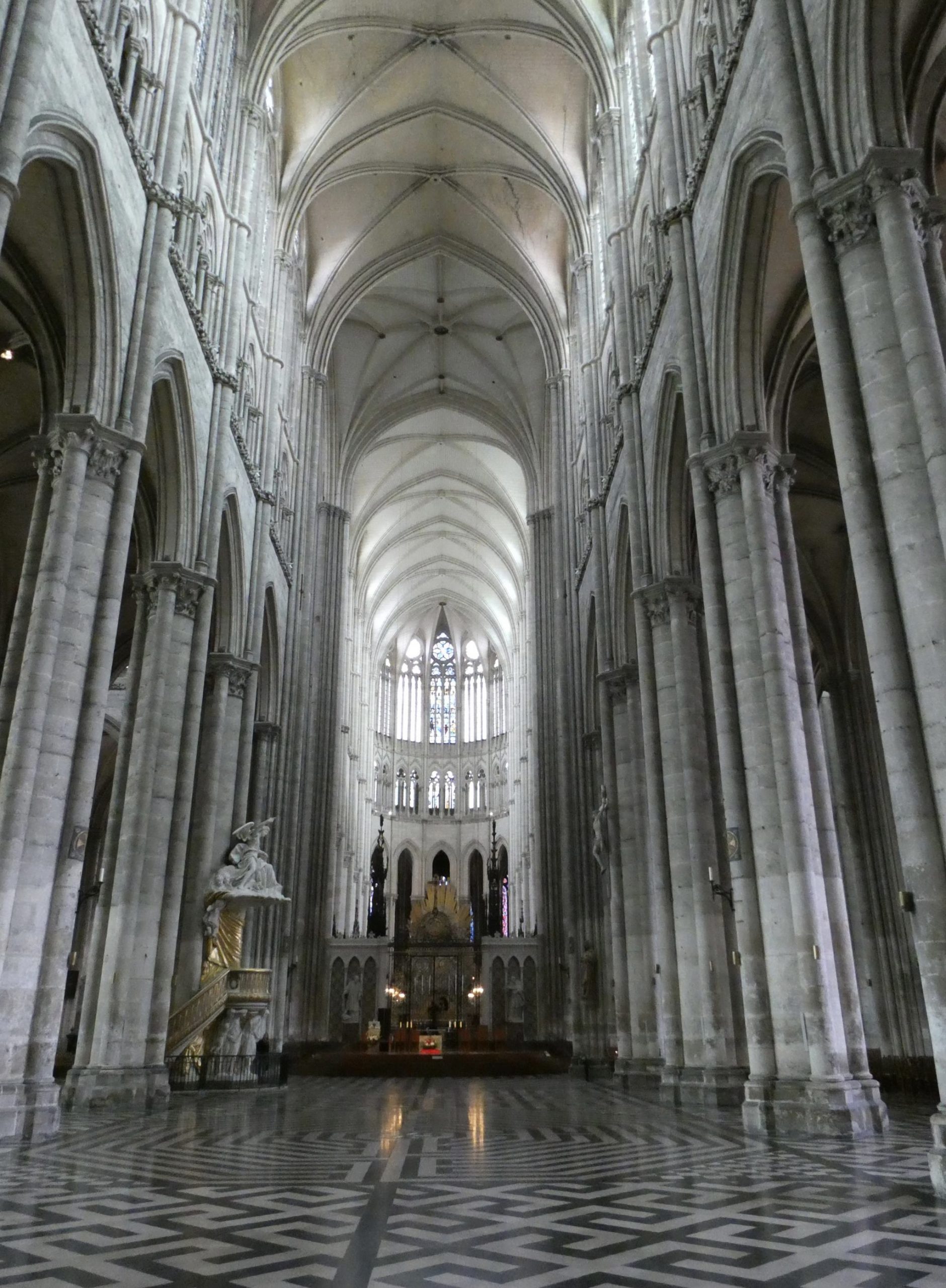 All good cathedrals have a ghoulish reliquary, and here it is the reputed head of John the Baptist.  The head was looted by the Crusaders during the sacking of Constantinople and brought to Amiens in 1206.  The cathedral was built to house it.  The original head and the ornate casing in which it sat were destroyed during the French Revolution – the looters became the looted, it seems – but a replica is in the cathedral treasury and graphic friezes depicting the saint’s fate feature in the church. 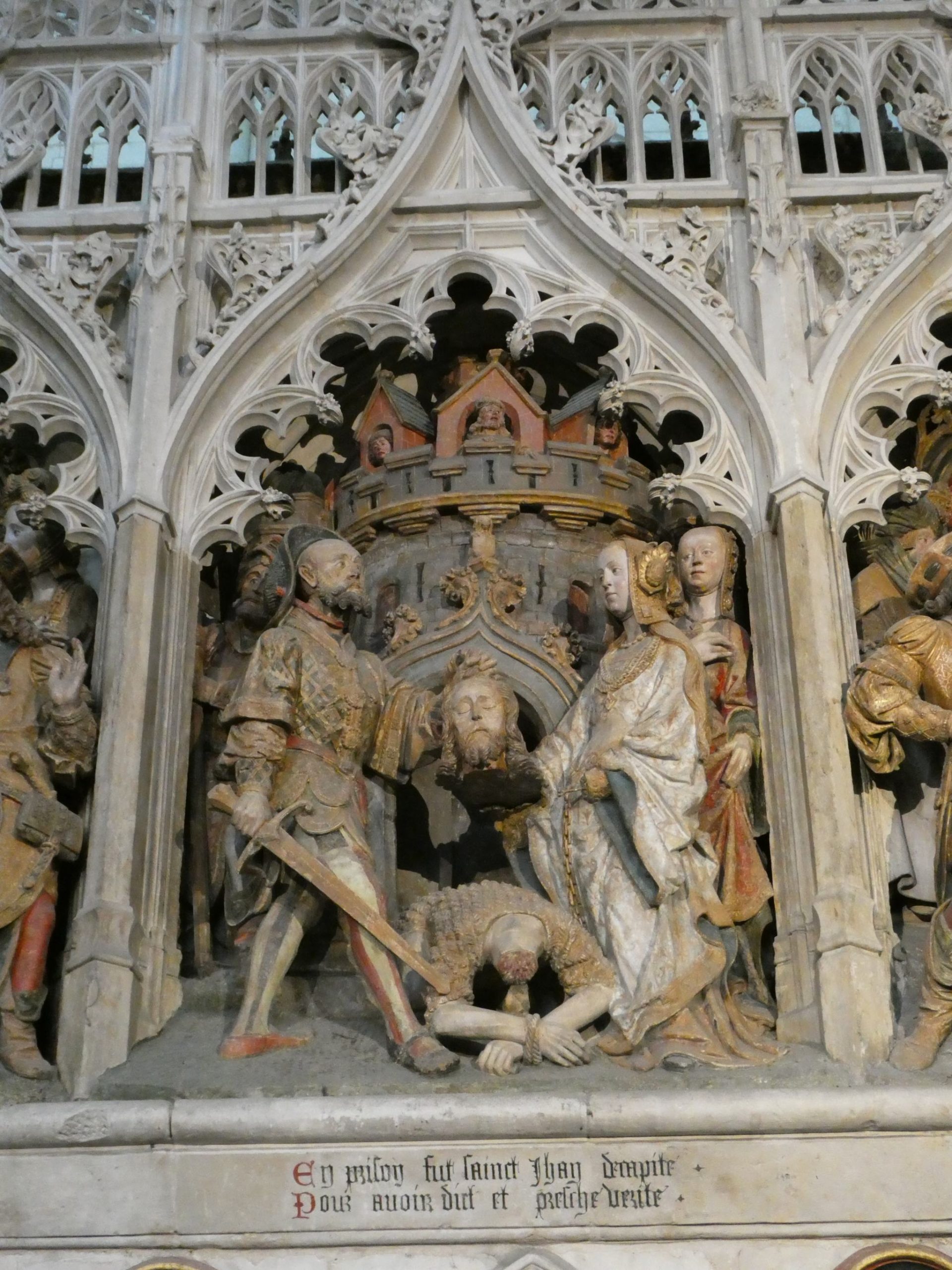 On a more contemporary note, there are also plaques paying tribute to the non-French forces who died liberating Amiens in WW1.   Here are ones that resonated with us, for obvious reasons. 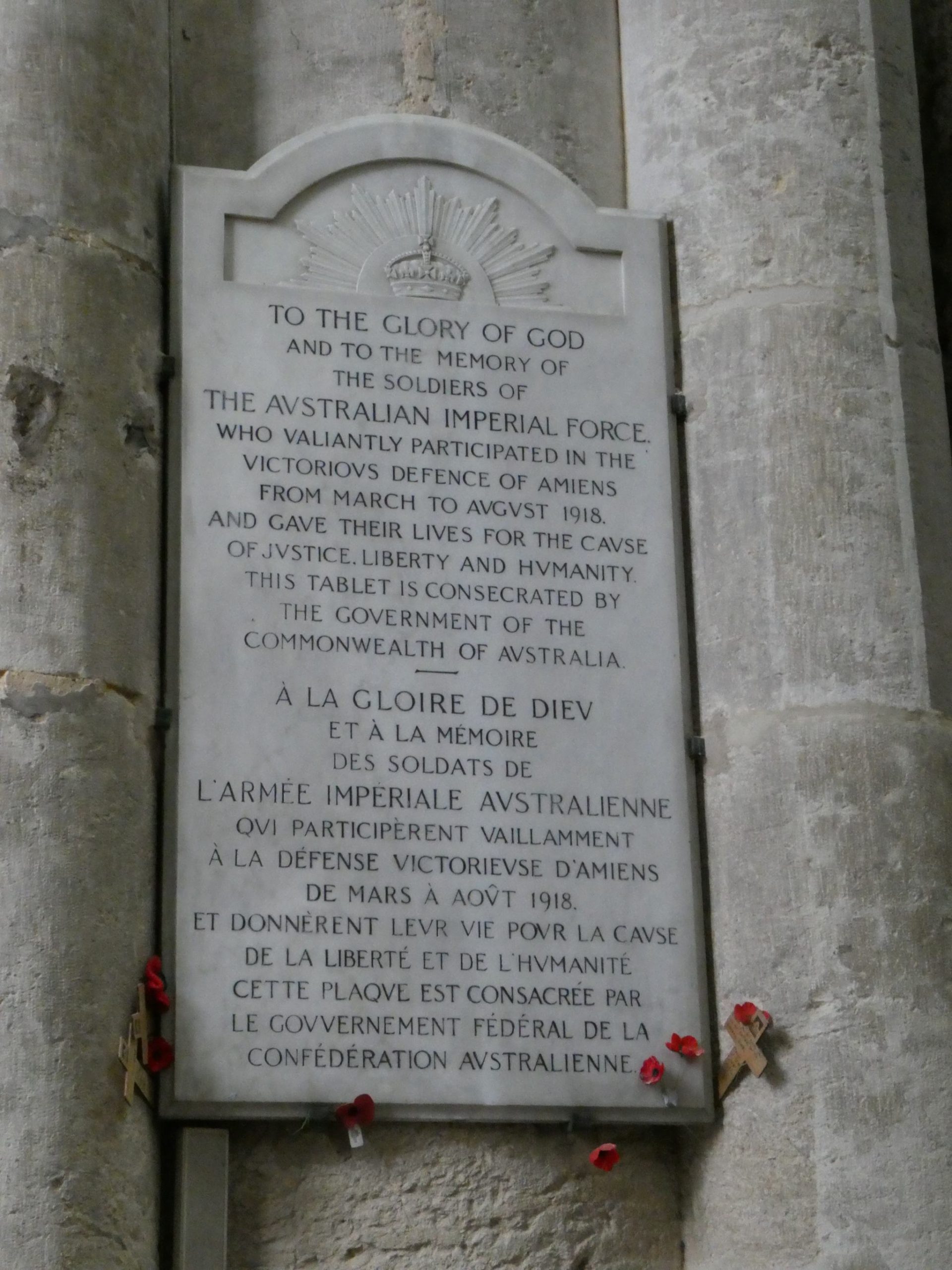 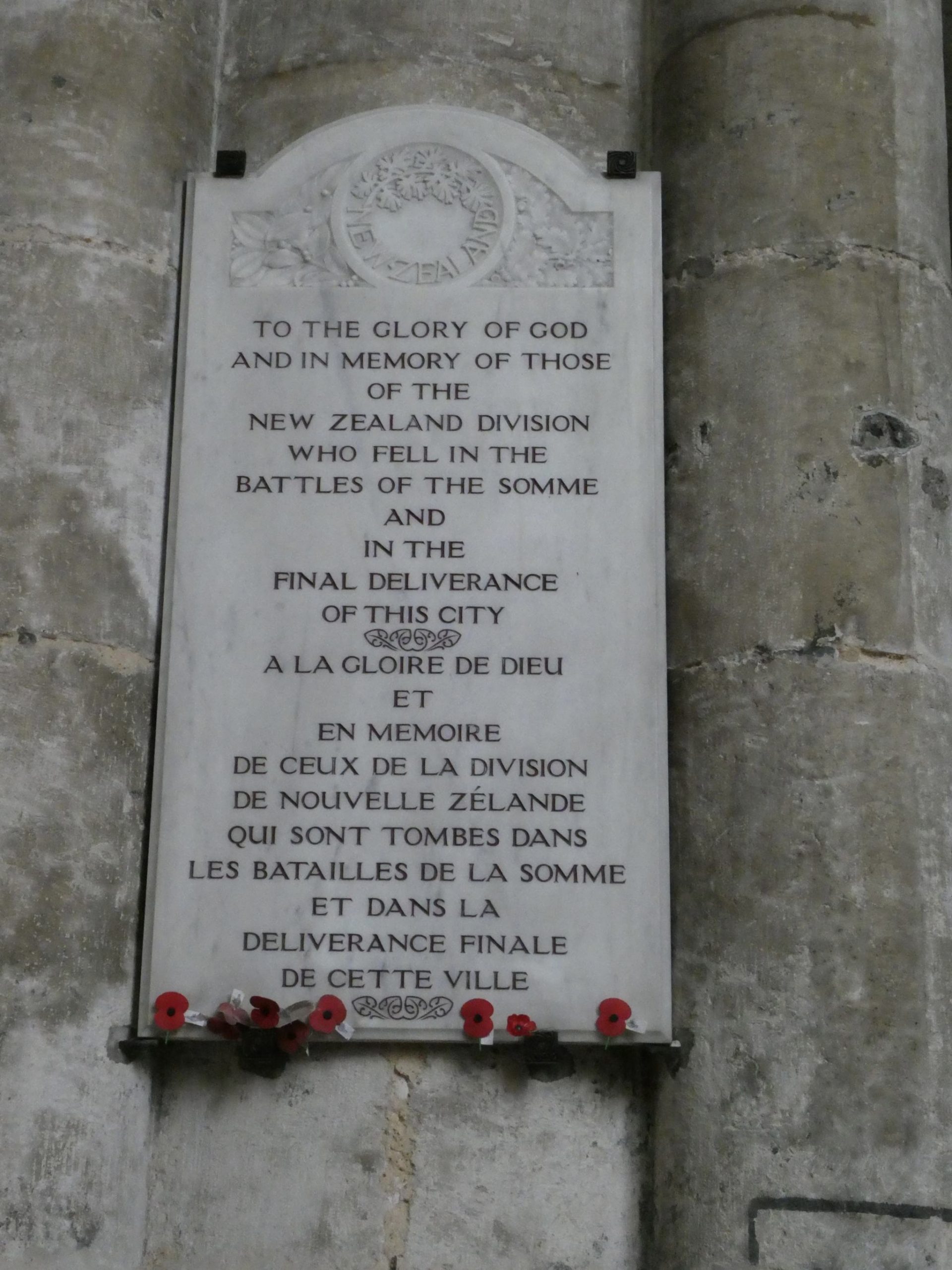 A cherub on a mausoleum hidden behind the altar sits bereft with its left hand upon an hour-glass to symbolise the brevity of life, and its right elbow resting on a skull to symbolise death.  It’s a small detail on an ornate carving but by random happenstance the image was put on a postcard which became a popular one for troops engaged at the Battle of the Somme to send home.  The cherub became known as the Weeping Angel of Amiens and has been famous as such ever since. 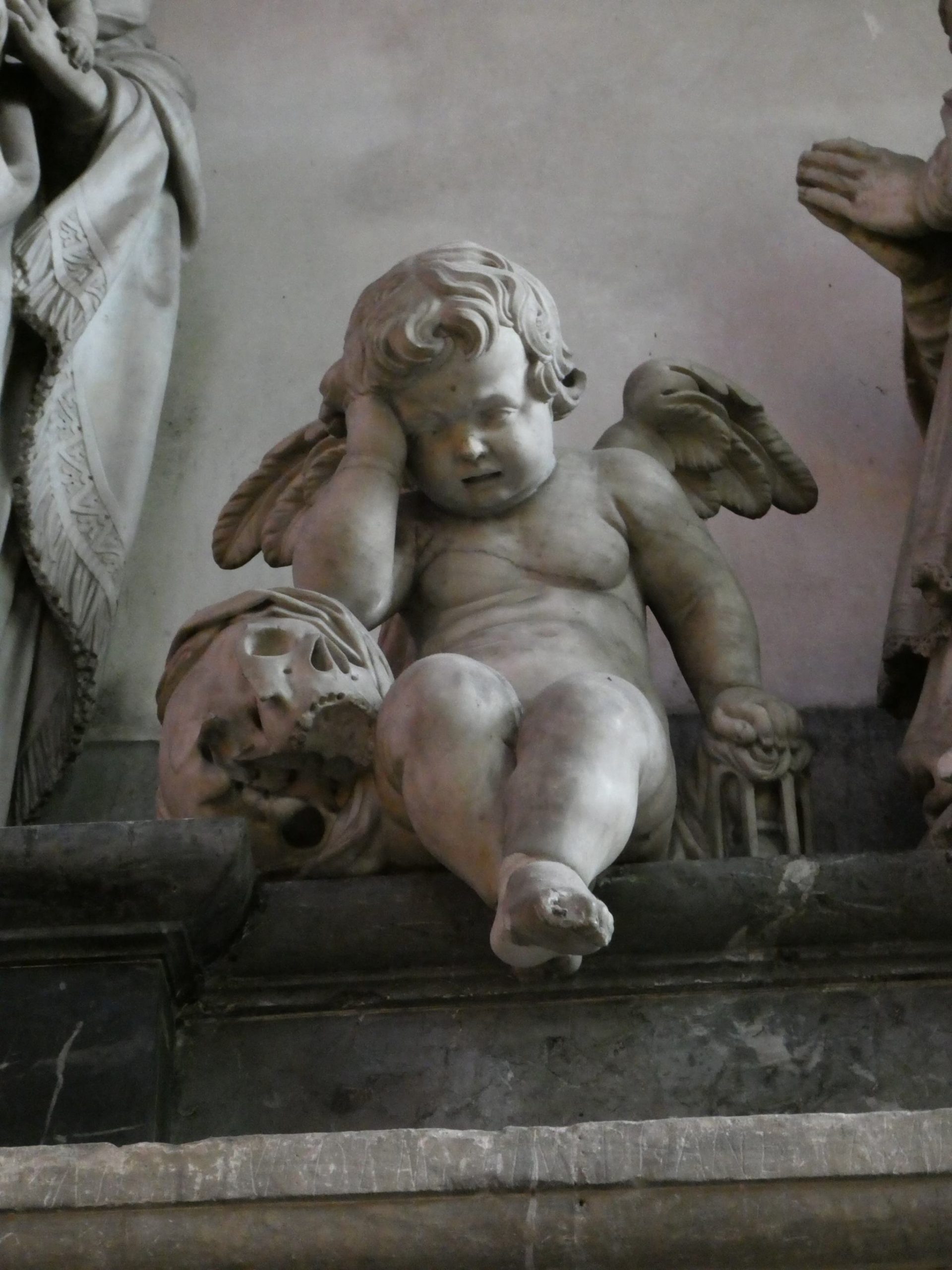 We also visited the Jules Verne Museum, in the house where the writer lived from 1882 to 1900.  The opulent town house is a testament to his success as a writer even within his own lifetime, and has 4 levels with rooms decorated in period-appropriate furnishings displaying some 700 of his original writings, posters of early stage and cinema productions of his works and memorabilia.  There’s a model of the submarine from Twenty Thousand Leagues Under the Sea, and a room with models of his imagined flying machines. 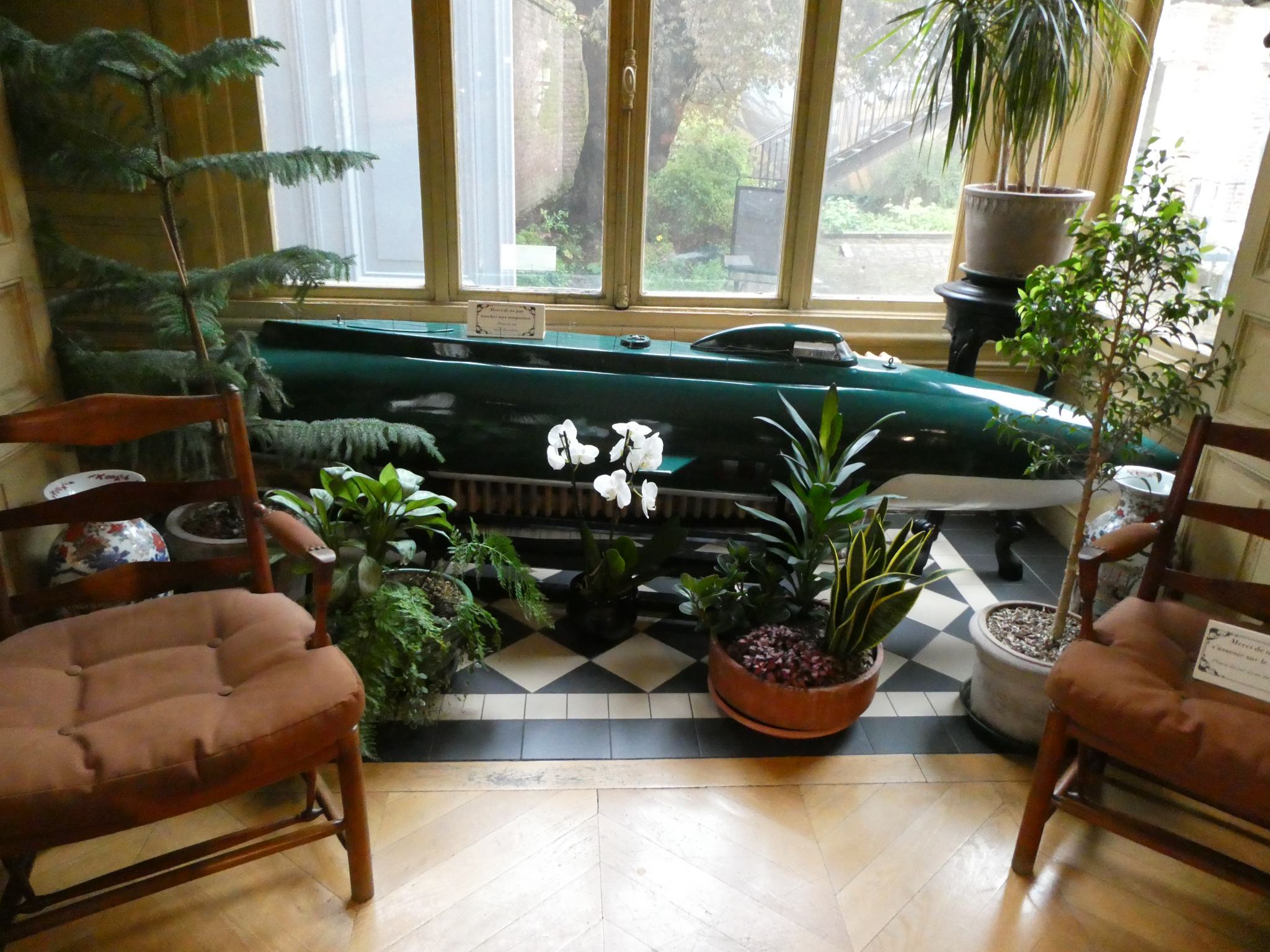 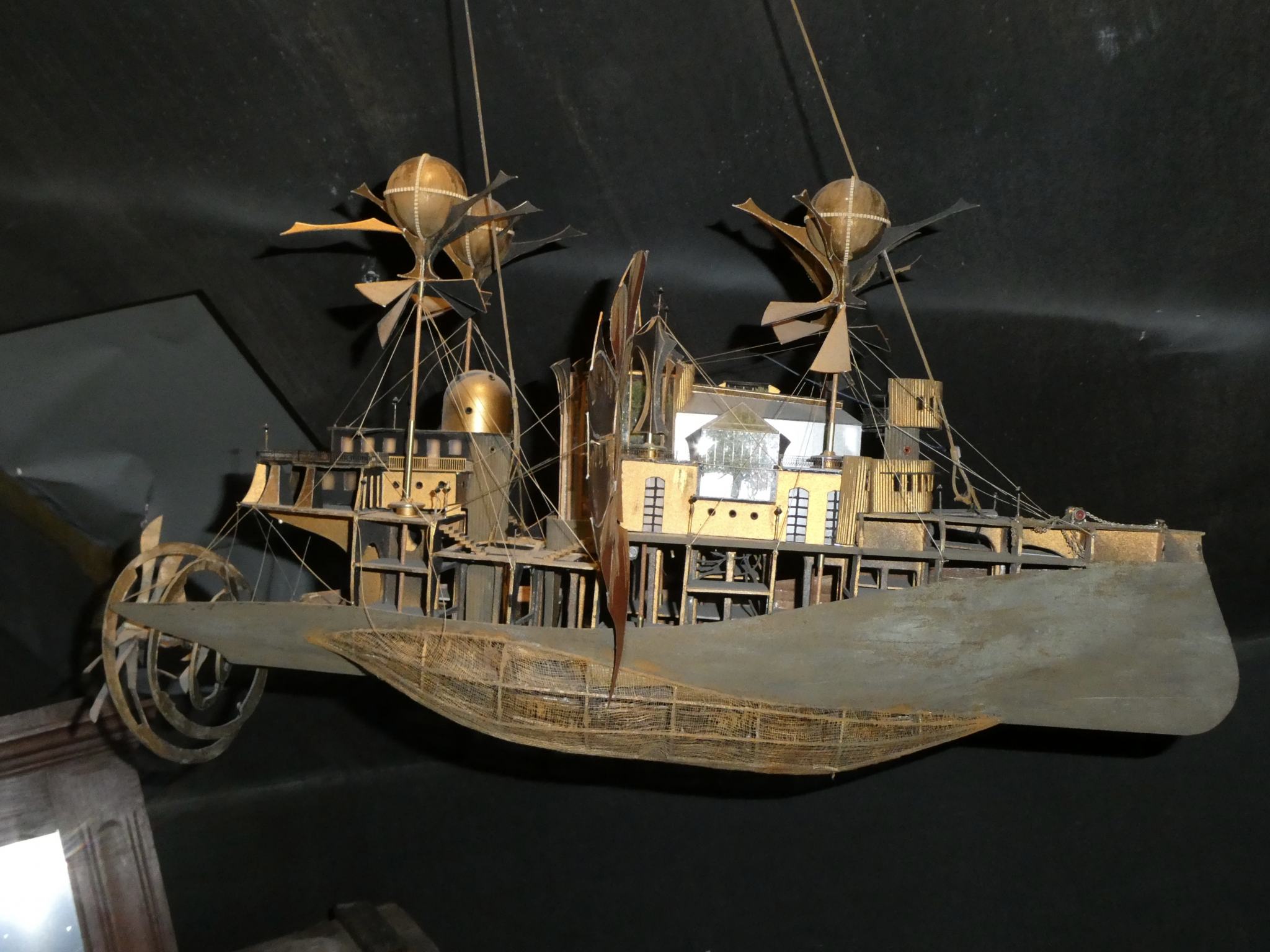 The weather was deteriorating.  We abandoned all hope of visiting Les Hortillonnages (loosely translated ‘the little gardens’) and jumped on the train back to Arras.  Not raining and somewhat warmer, that bar and glass of red was still the ticket.

But what a difference a day makes.  Next morning we found ourselves back in Amiens with a few hours to spare between connecting trains.  The sun was shining and the temperature had risen into double digits.  We seized the opportunity to visit Les Hortillonnages after all.

Around 700 years ago, hotillonners (market gardeners) turned more than 10,000 hectares of marsh around the city into plots of land separated by a series of canals.  Using small hand shovels they carved out clots of peat to build up the banks, they drained the reclaimed land and set up vegetable gardens on the immensely fertile land within the matrix of canals.  Literally the food bowl of Amiens.   They navigated the canals in black flat bottomed boats with a raised front specifically designed to allow access to the land without damaging the banks.  The peat soil produced three crops per year and the hortillonners sold their produce at floating markets in the city.

Today around 300 hectares remain and you can take a tour on replicas of the boats, which are electric and glide silently and slowly around the canals. 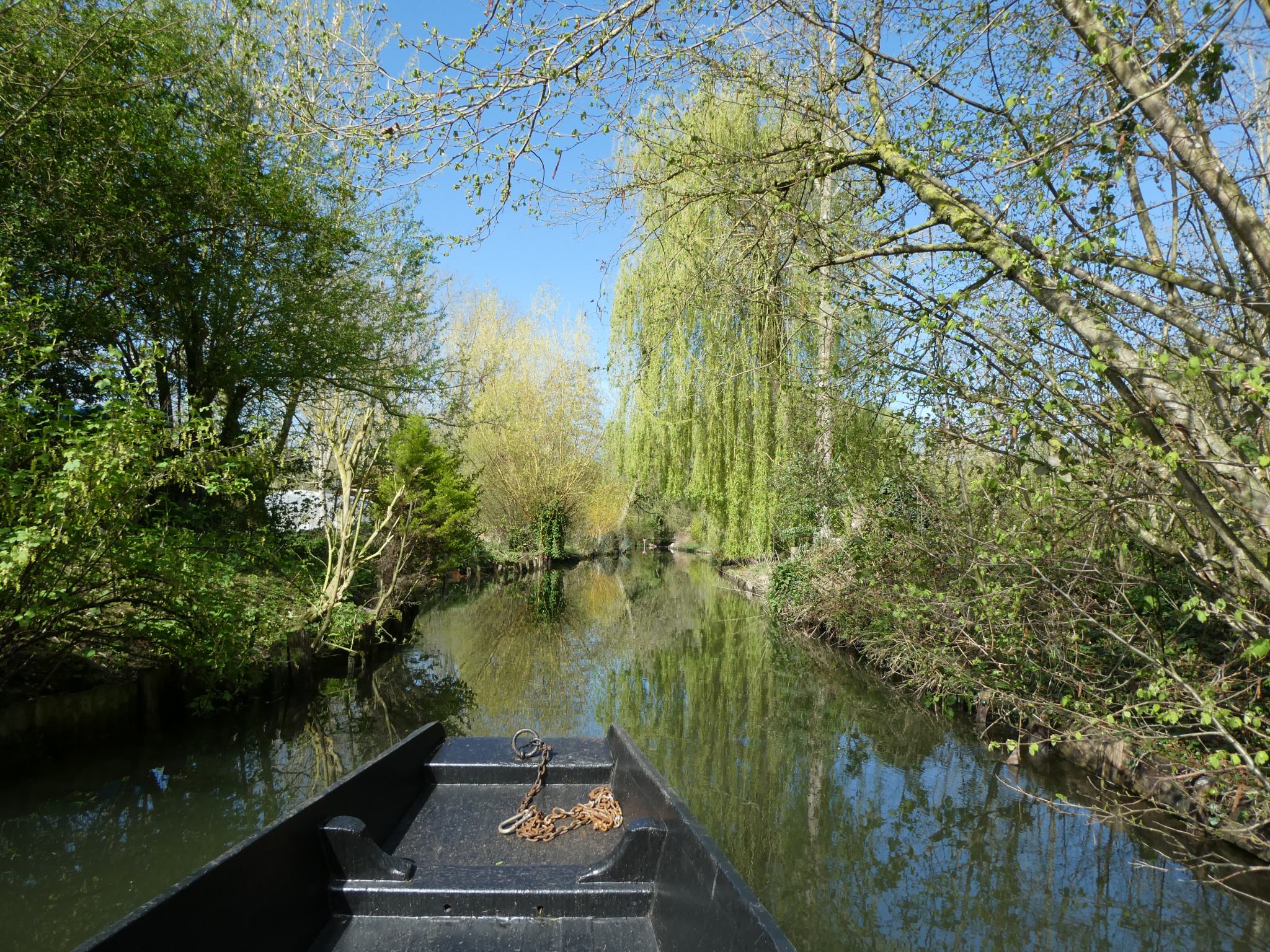 At their peak the Hortillonnages supported over 1,000 market gardeners.  Now there are only about 10 full time hortillonners with a total of about 25 hectares under cultivation. 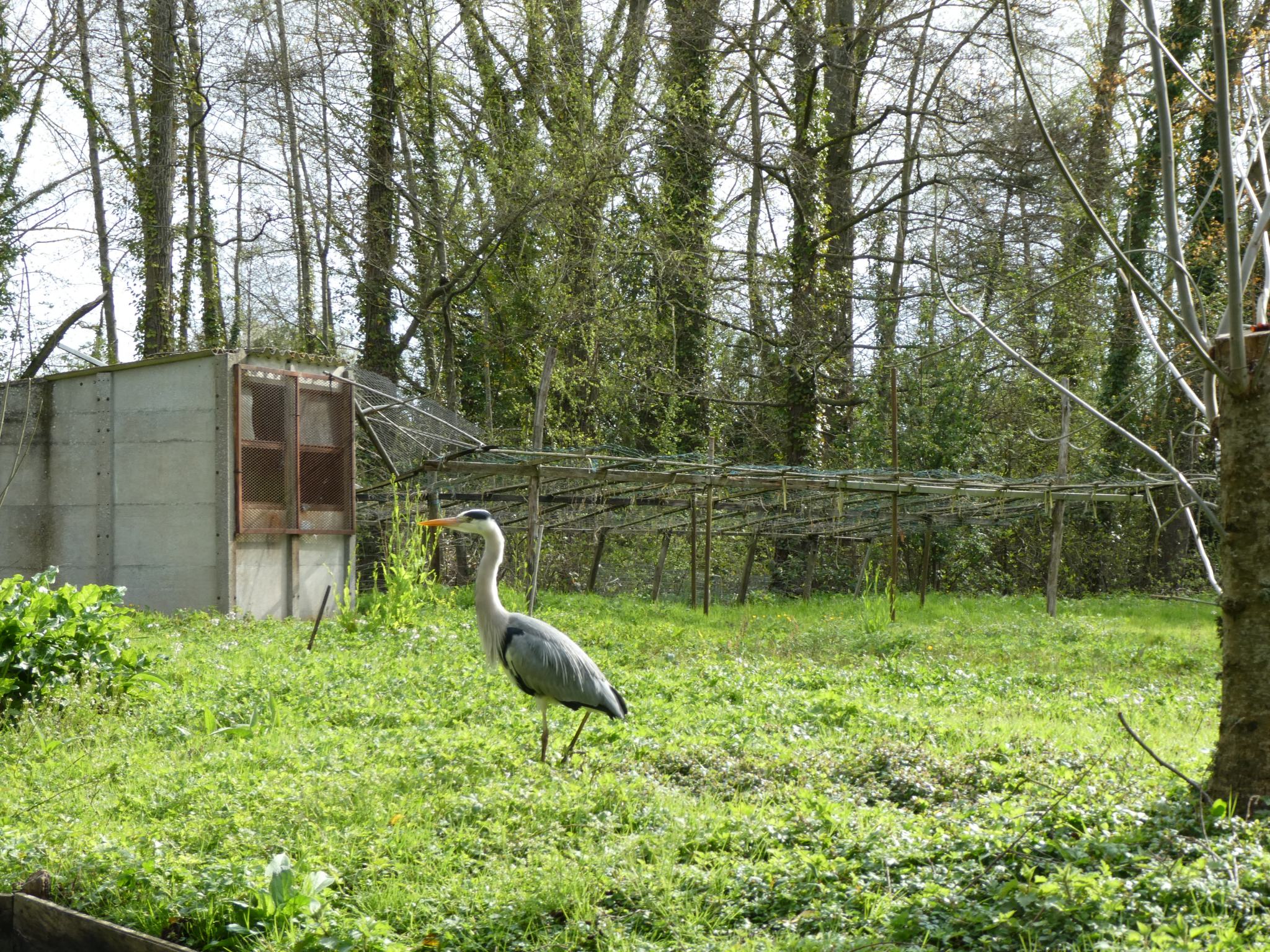 Many of the remaining plots are now owned by residents of Amiens and vegetables have given way to shacks and leisure gardens.  A bit like having a weekender on a canal. 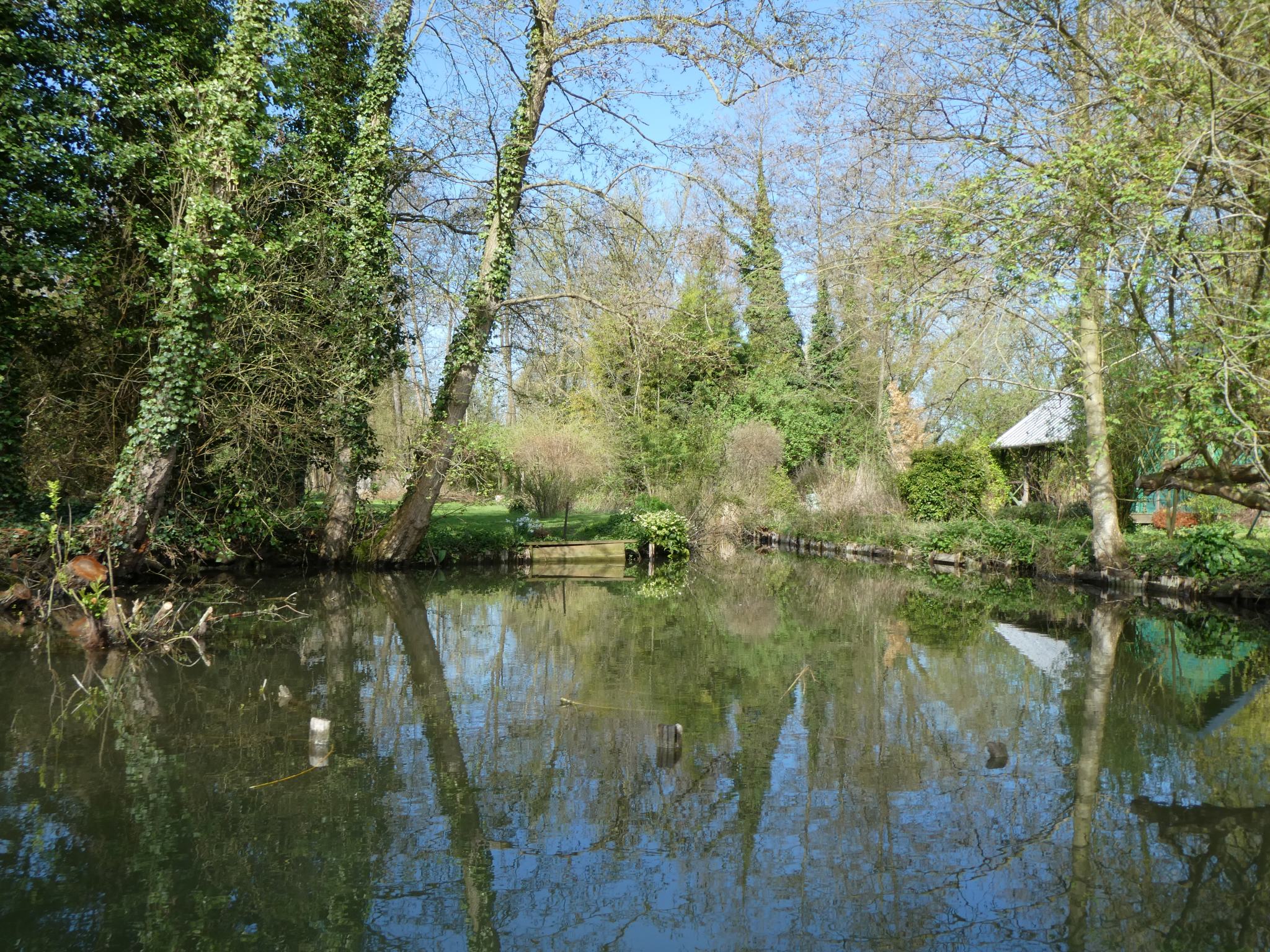 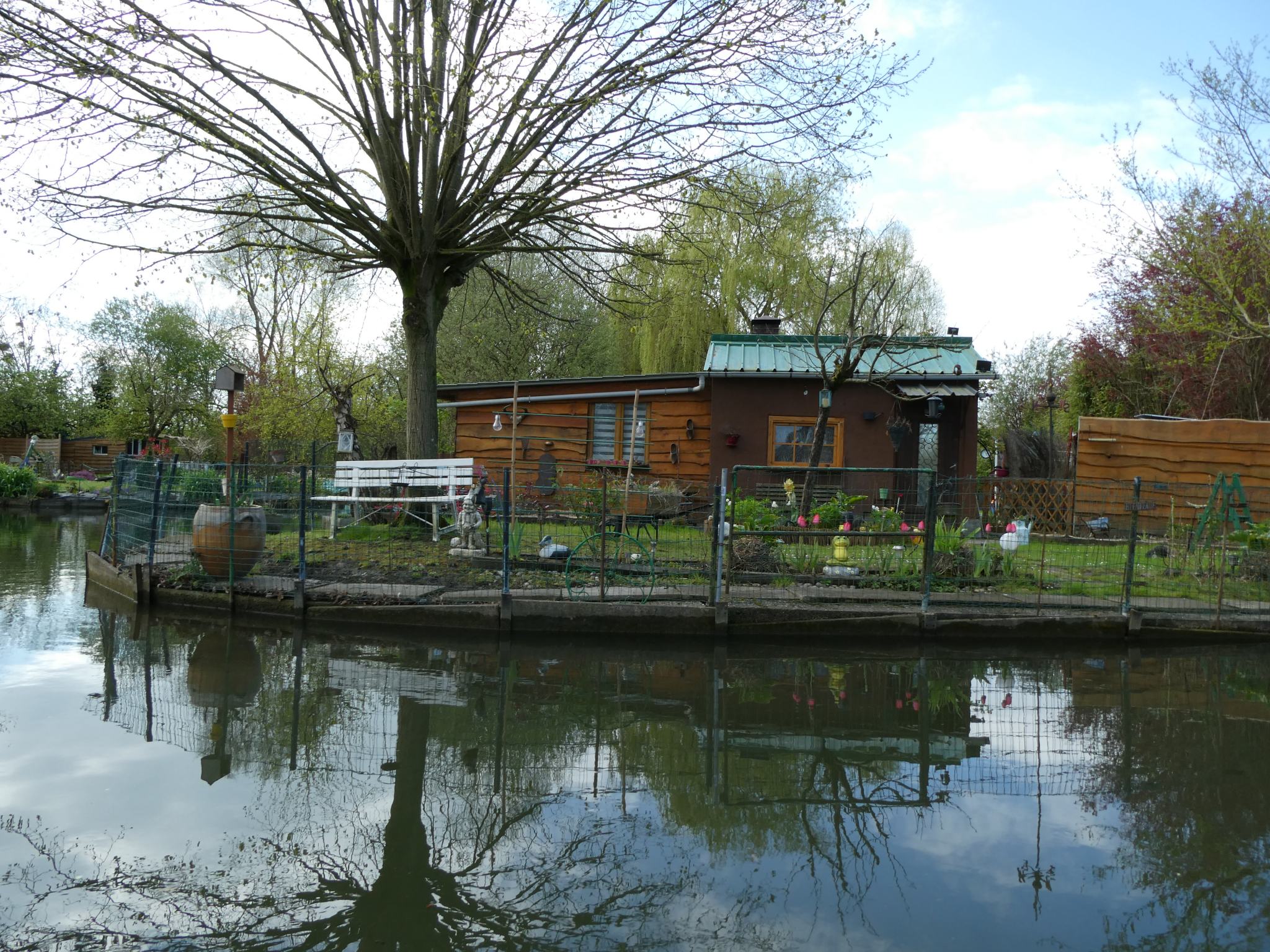 So close to the city you can actually see the cathedral. 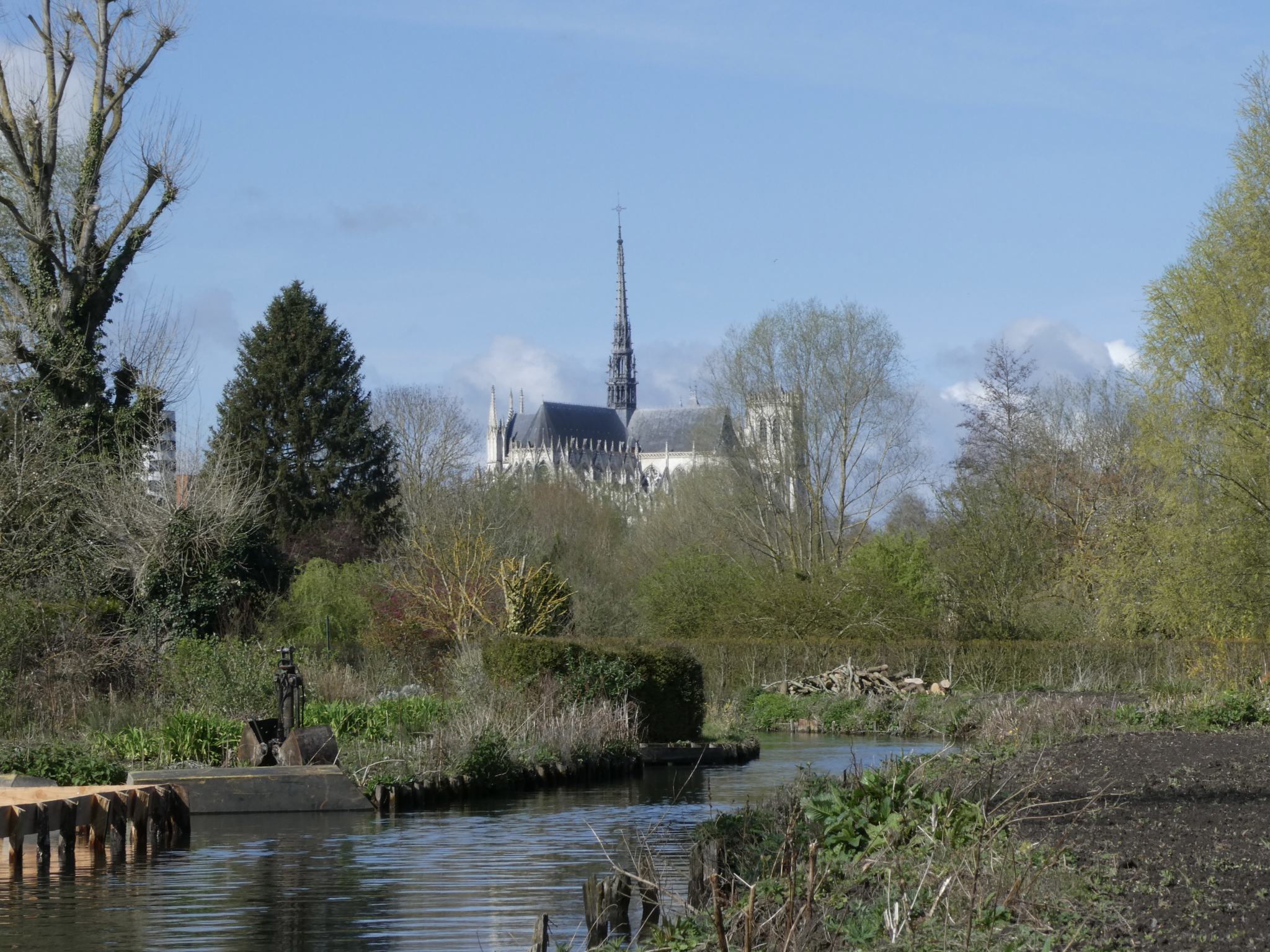 In the 1970s a city ring-road was planned which would have destroyed the Hortillonnages.  Locals were galvanised into action and after persistent lobbying, the project was abandoned.  A not-for-profit association formed to protest the road project now works to enhance the area, restoring banks and turning disused parts into attractive green space. 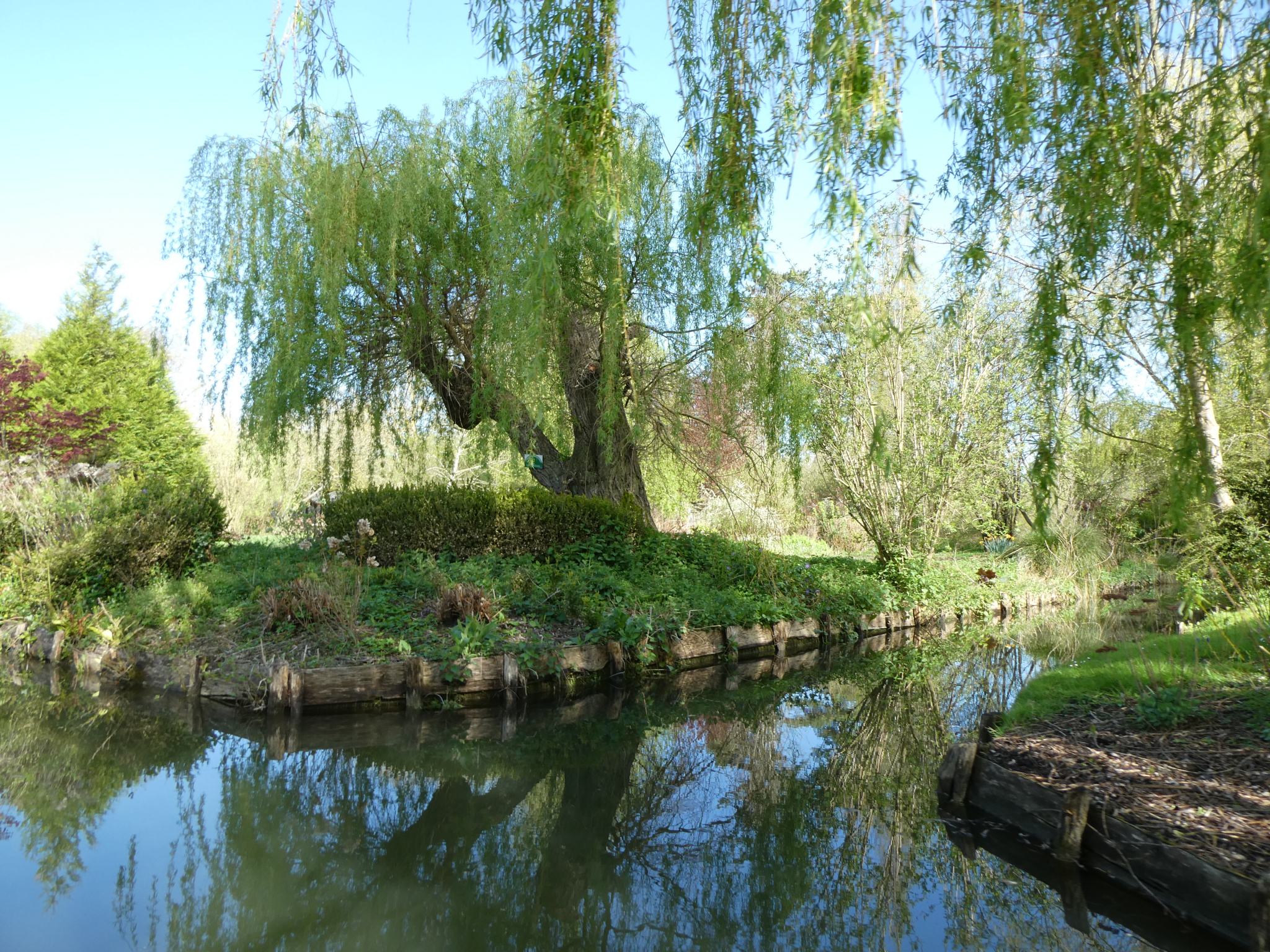 The association also runs the boat tours.  On a sunny Spring day, the 45 minute cruise around the canals was really pleasant and an interesting insight into an ancient farming practice which has now all but disappeared.