Caen was founded by William the Conquerer in the 11th century and signs of him are everywhere.  Despite being badly damaged in the 1944 Battle of Normandy, there’s a lot of heritage and history still evident.  We stayed in an apartment in a 17th century building on one of the city’s main squares.  Very beautiful locale. 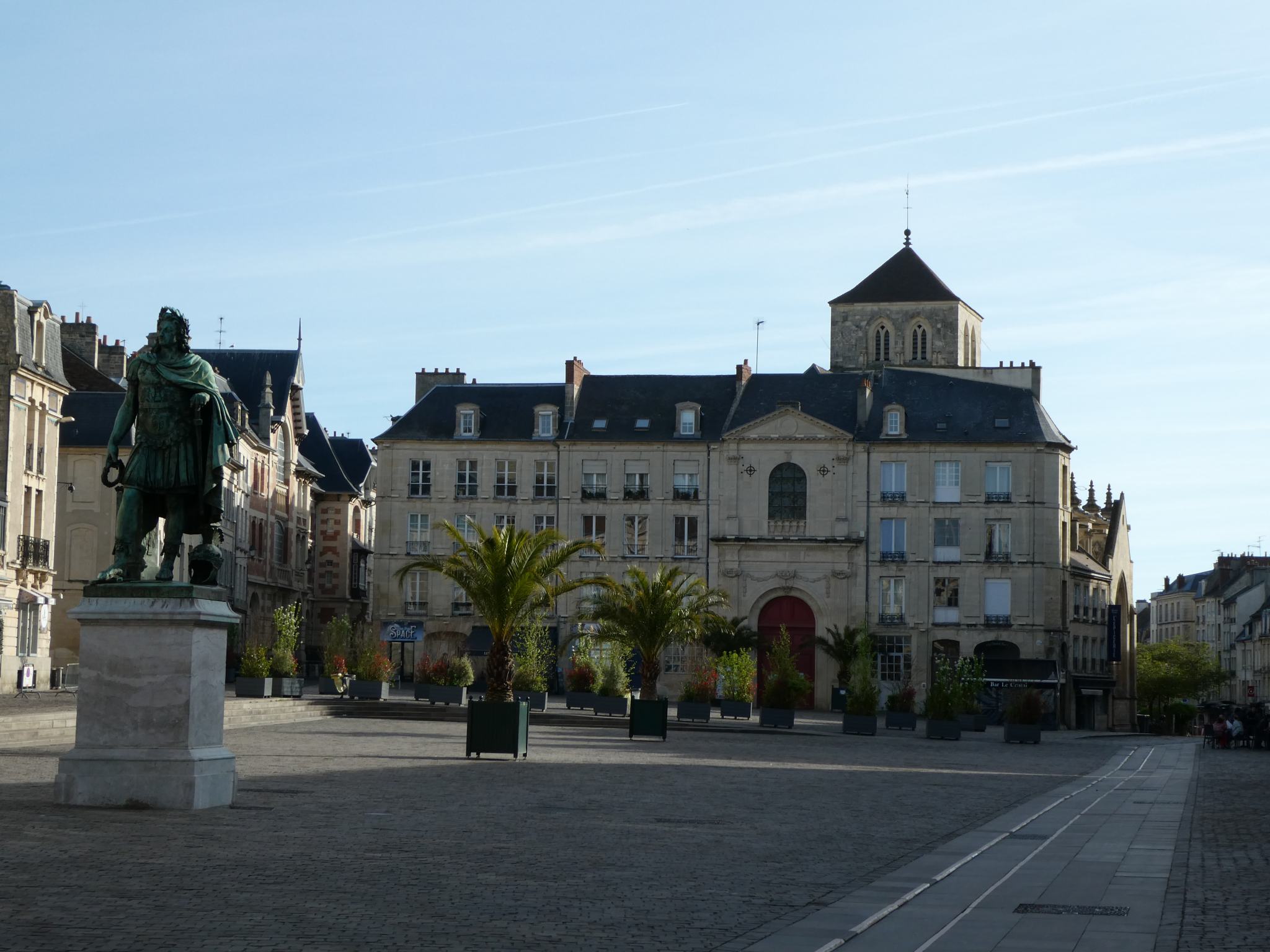 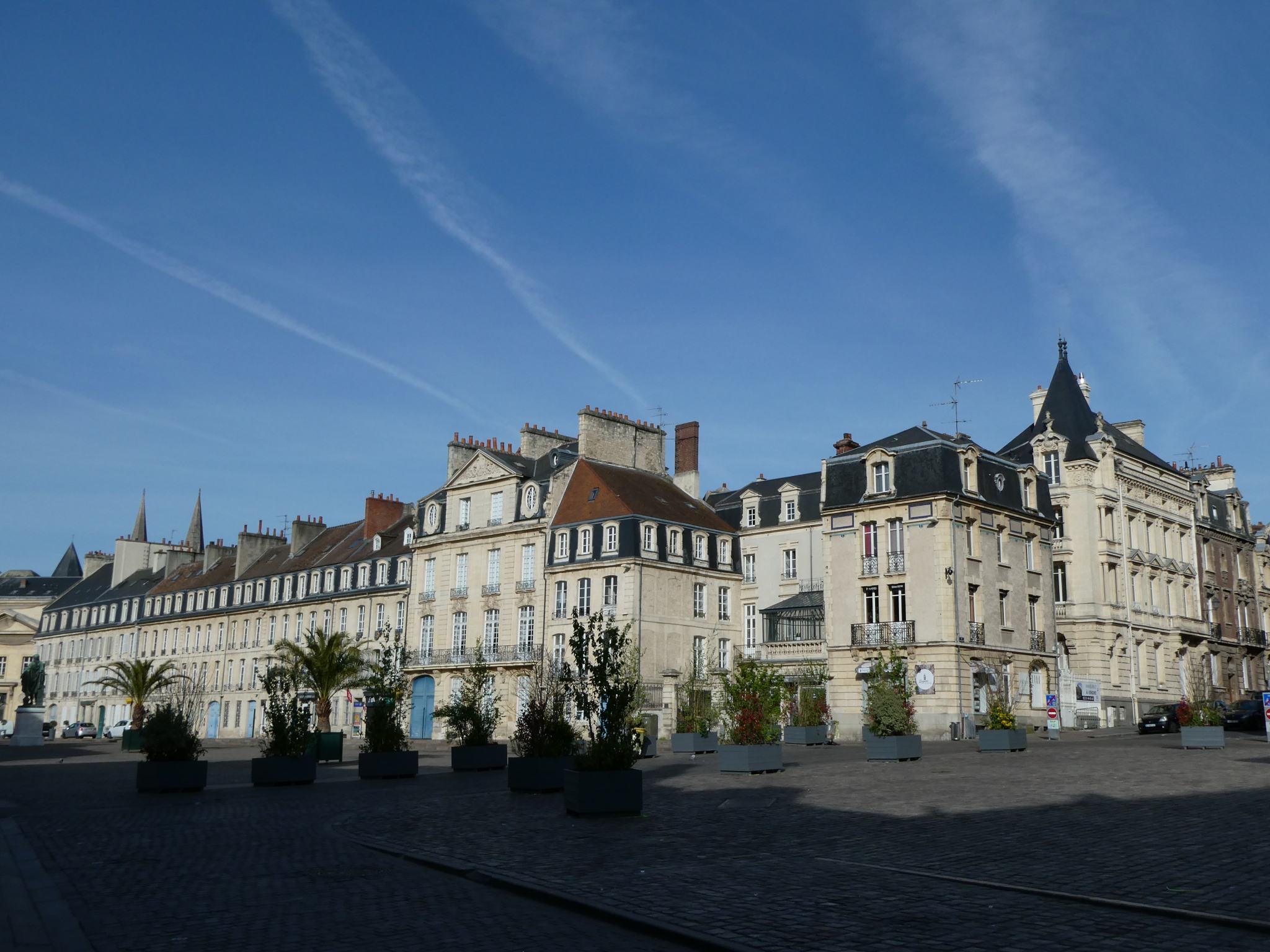 One morning, intending to drive to Bayeux, we came out of the apartment to discover the square had transformed into the weekly market.  Being easily distracted by food, we thought we would go for a wander.  We never did make it to the car.  The market stretched on for several blocks with vendors of charcuterie, fish and shellfish, vegetables, cider, patisserie and exquisite take home meals. 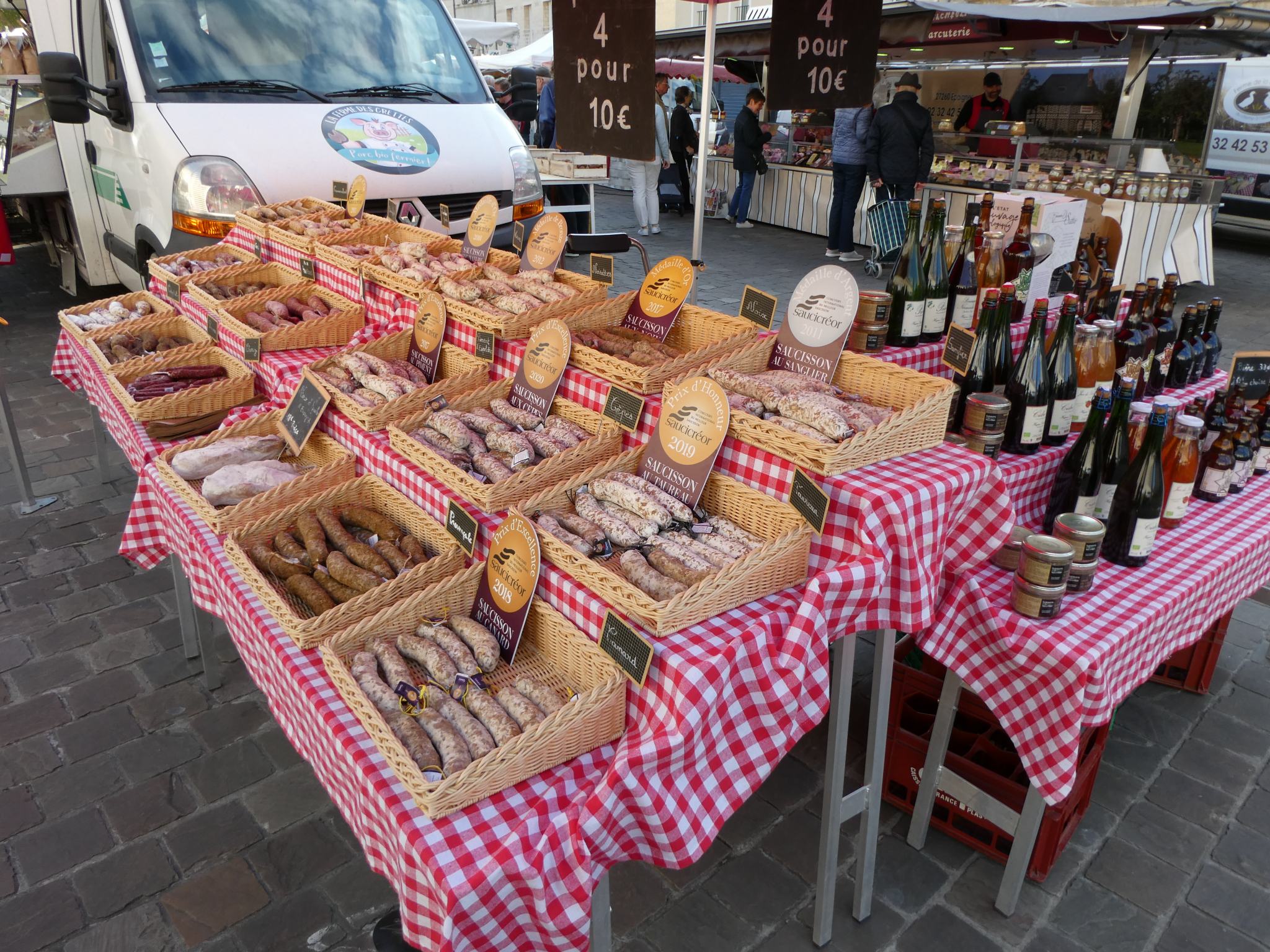 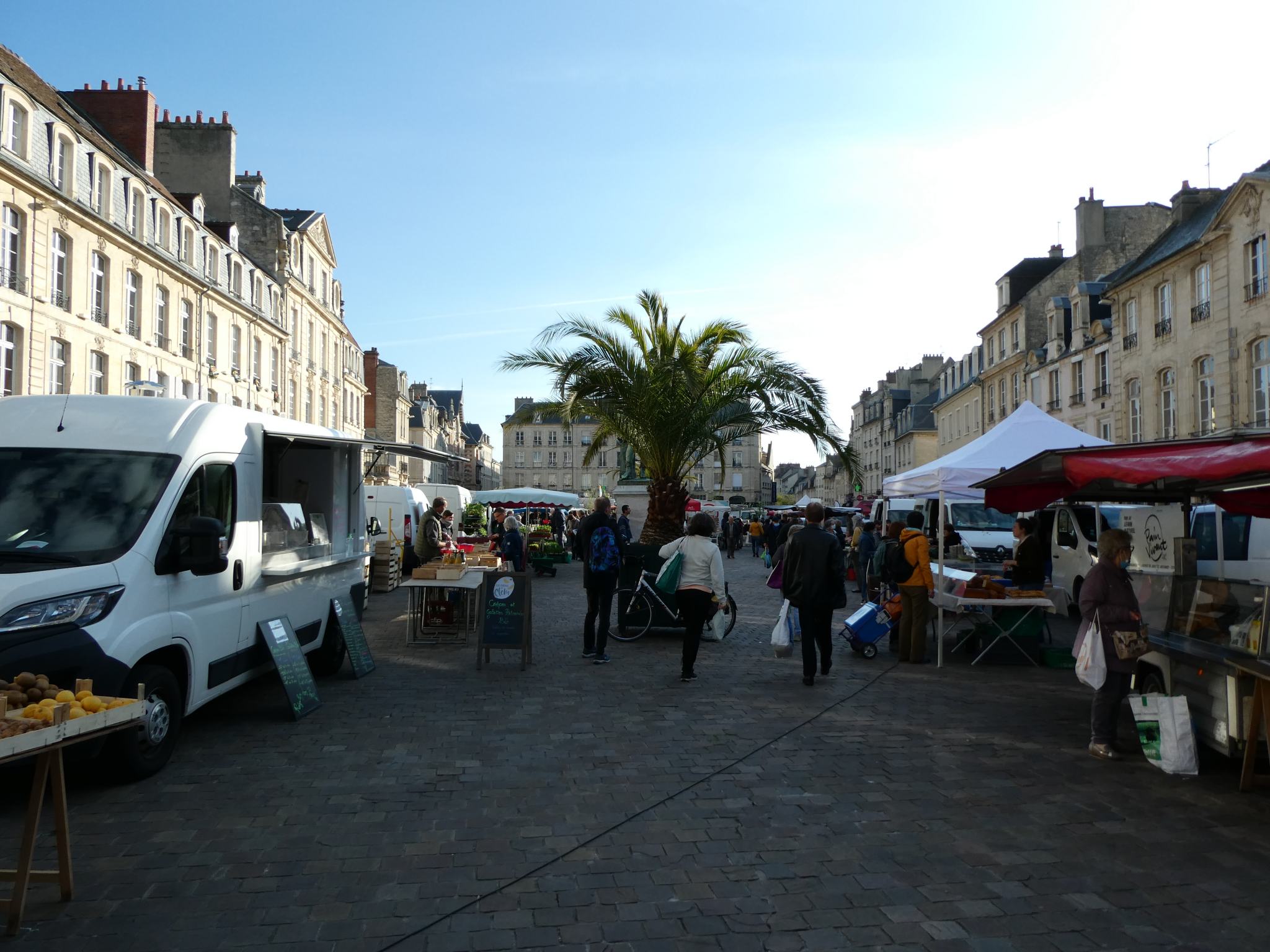 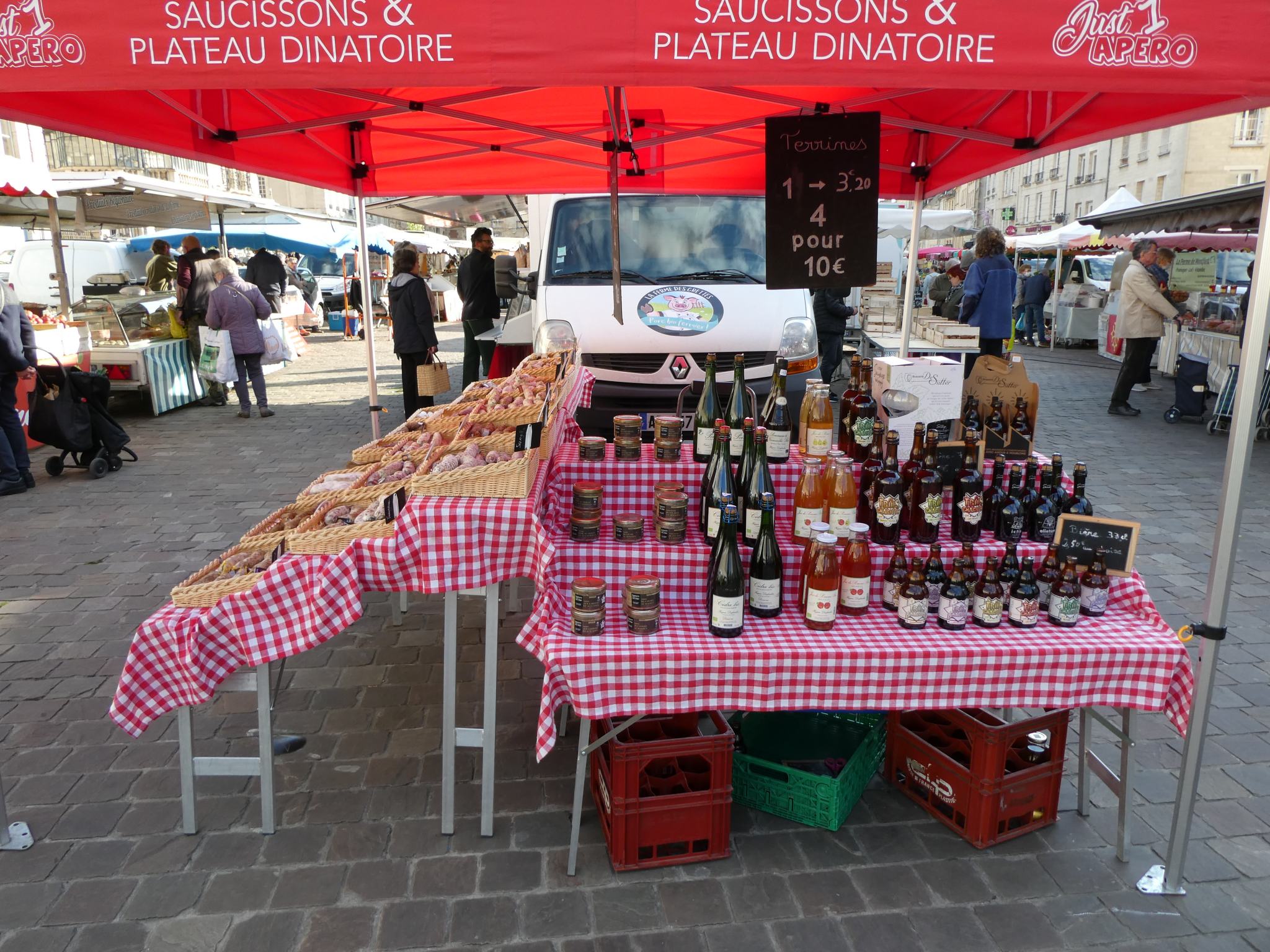 A woman was shelling fresh sea scallops.  They are a specialty of this area and so prized that to preserve stocks, fishermen are only allowed to harvest from October until 15 May. We were just in time. 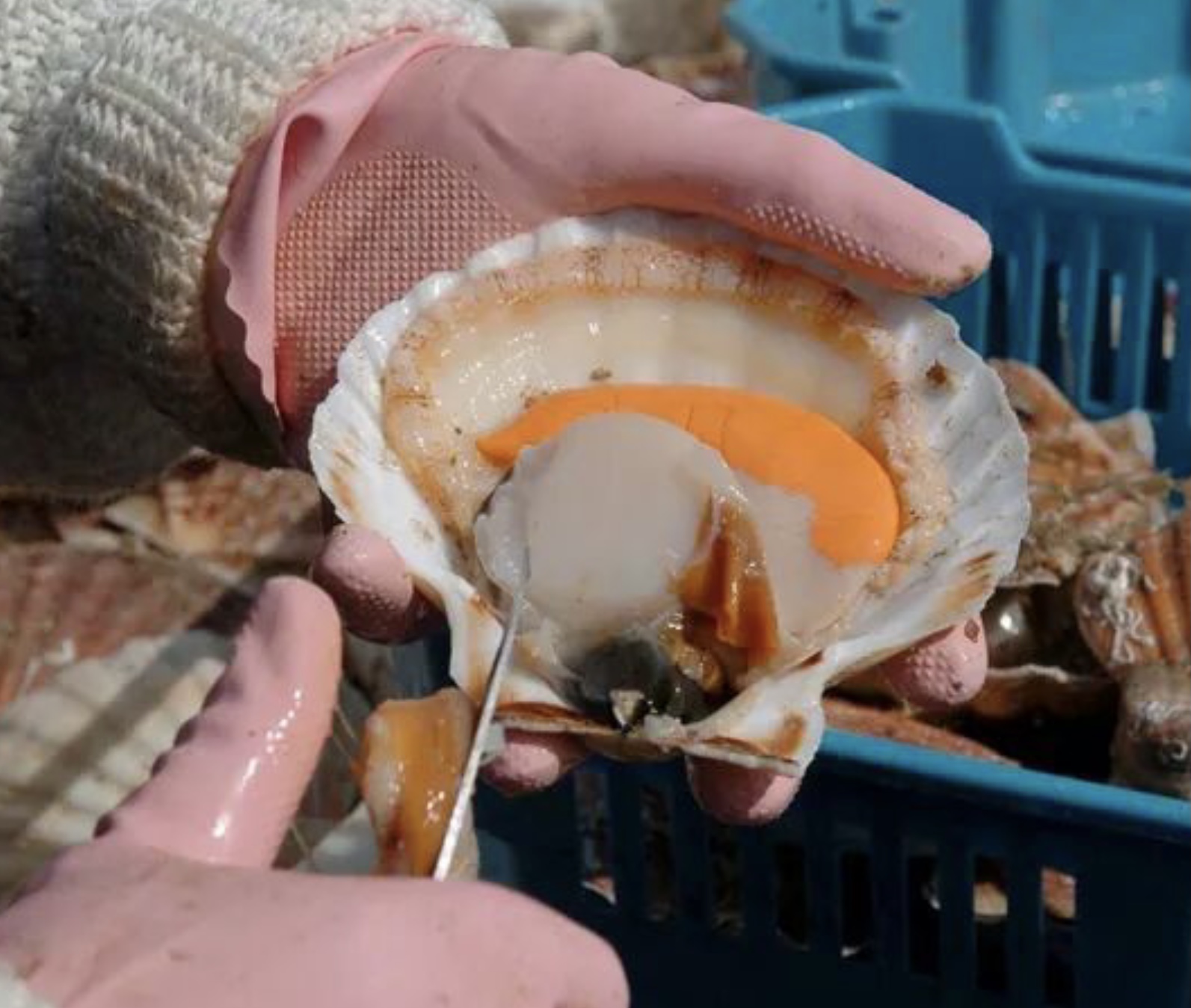 We bought a tranche and grilled them in butter and lemon for dinner.  Huge, delicate in texture and beautifully sweet.  Best scallops we’ve ever eaten.

With the scallops and some other delicious morsels secured for dinner, and fortified by a coffee in the sun, it was time for a bit of culture.

Founded by William the Conqueror in 1063, the Abbaye-aux-Hommes (Men’s Abbey), now city hall, was spared in the bombardment that destroyed much of the city in 1944 because it was a designated shelter for the civilian population. 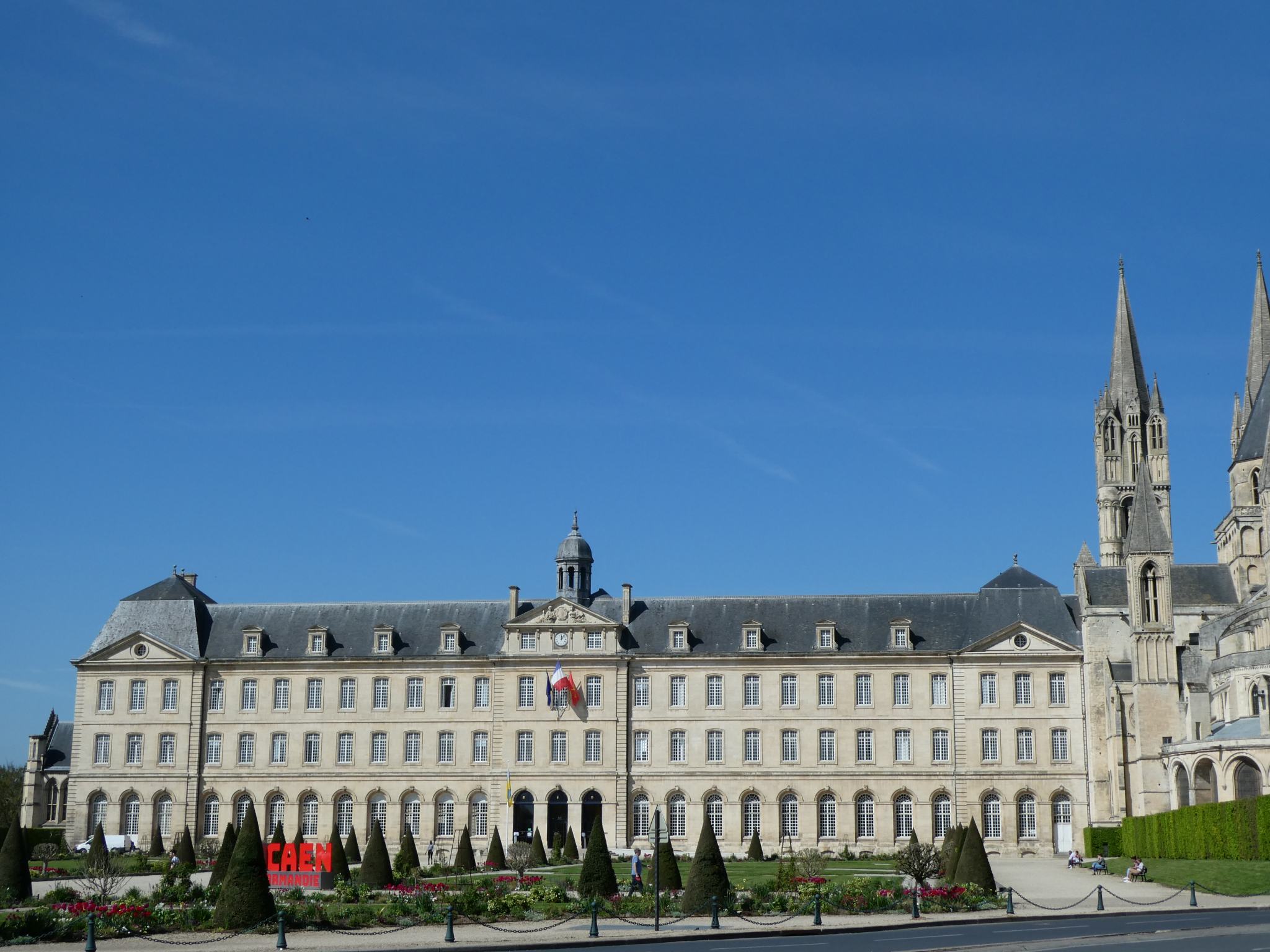 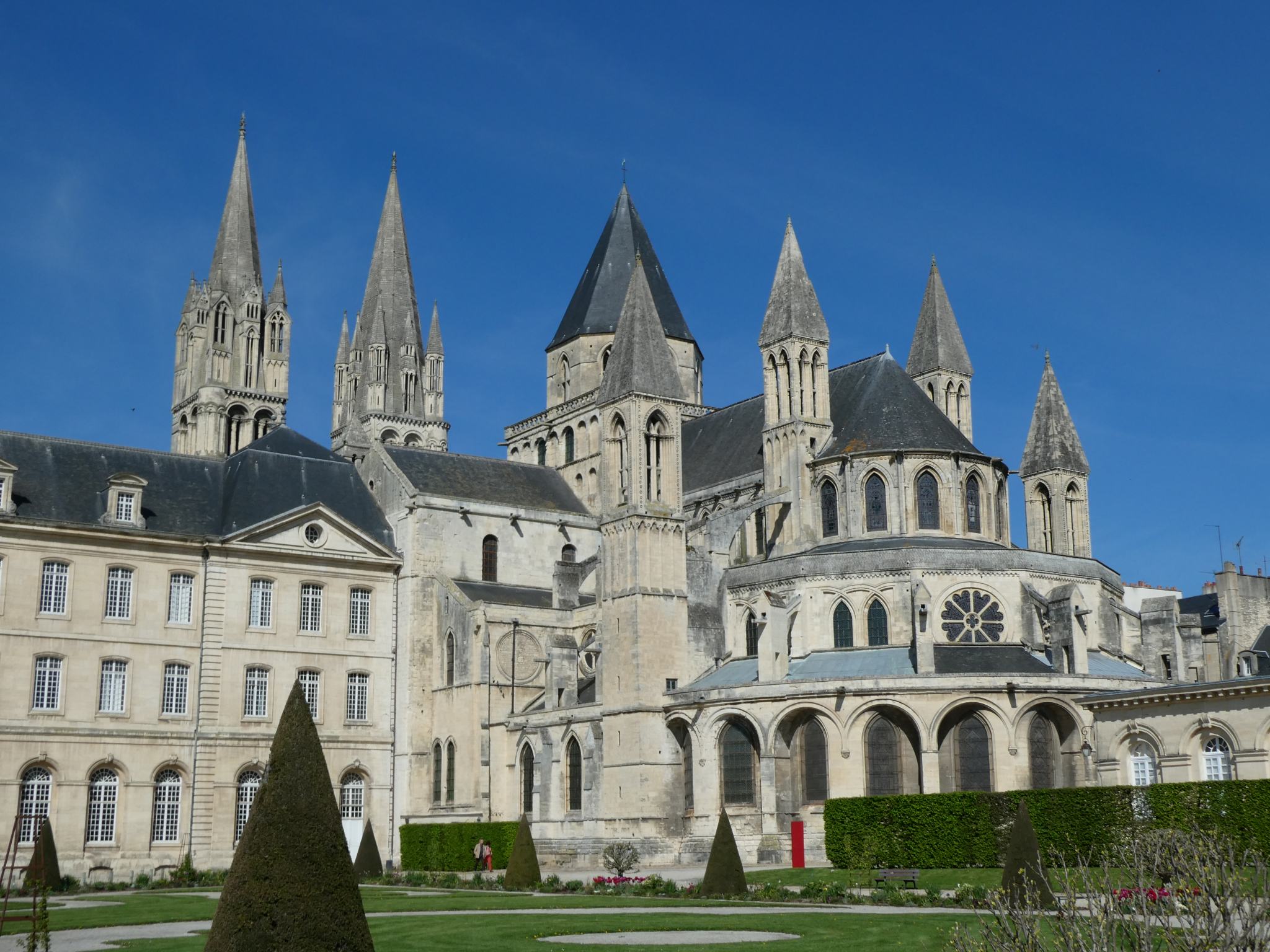 When William died in 1087, his body was brought to Caen for burial in the church.  The ceremony was not without drama.  It seems the stone sarcophagus built for him was too small.  Historian of the time, Orderic Vitalis, recorded that as William’s body was lowered into it “the swollen bowels burst, and an intolerable stench assailed the nostrils of the bystanders and the whole crowd”.  Even frankincense and smoking spices from censers failed to dispel the odour.  The ceremony was hastily concluded.  Even the lofty in this world can come to an ignominous end. 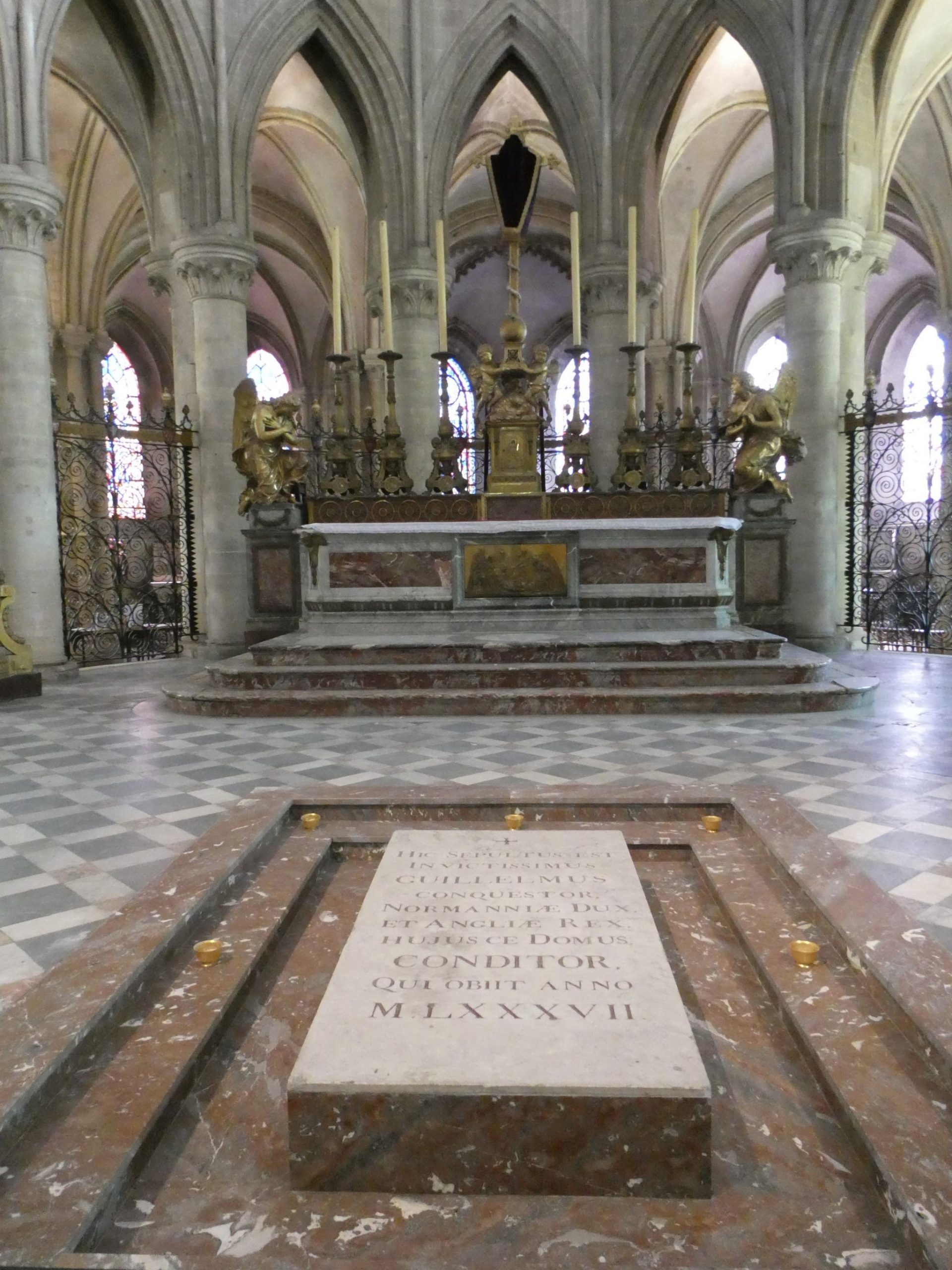 The inscription reads “Here lies the invincible William the Conquerer, Duke of Normandy and King of England …” But that’s not quite true.   William’s ornate mausoleum was desecrated during the Wars of Religion in the 1560s, his bones scattered and only his thigh bone was saved.  His tombstone was salvaged, repaired and relocated to the centre of the church but was destroyed during the French Revolution.  Rebuilt yet again, the current incarnation marks the spot but it seems not much of William is there.

Perhaps they have compensated with the bones of random saints.  There were a number of these display cases mounted on the walls. 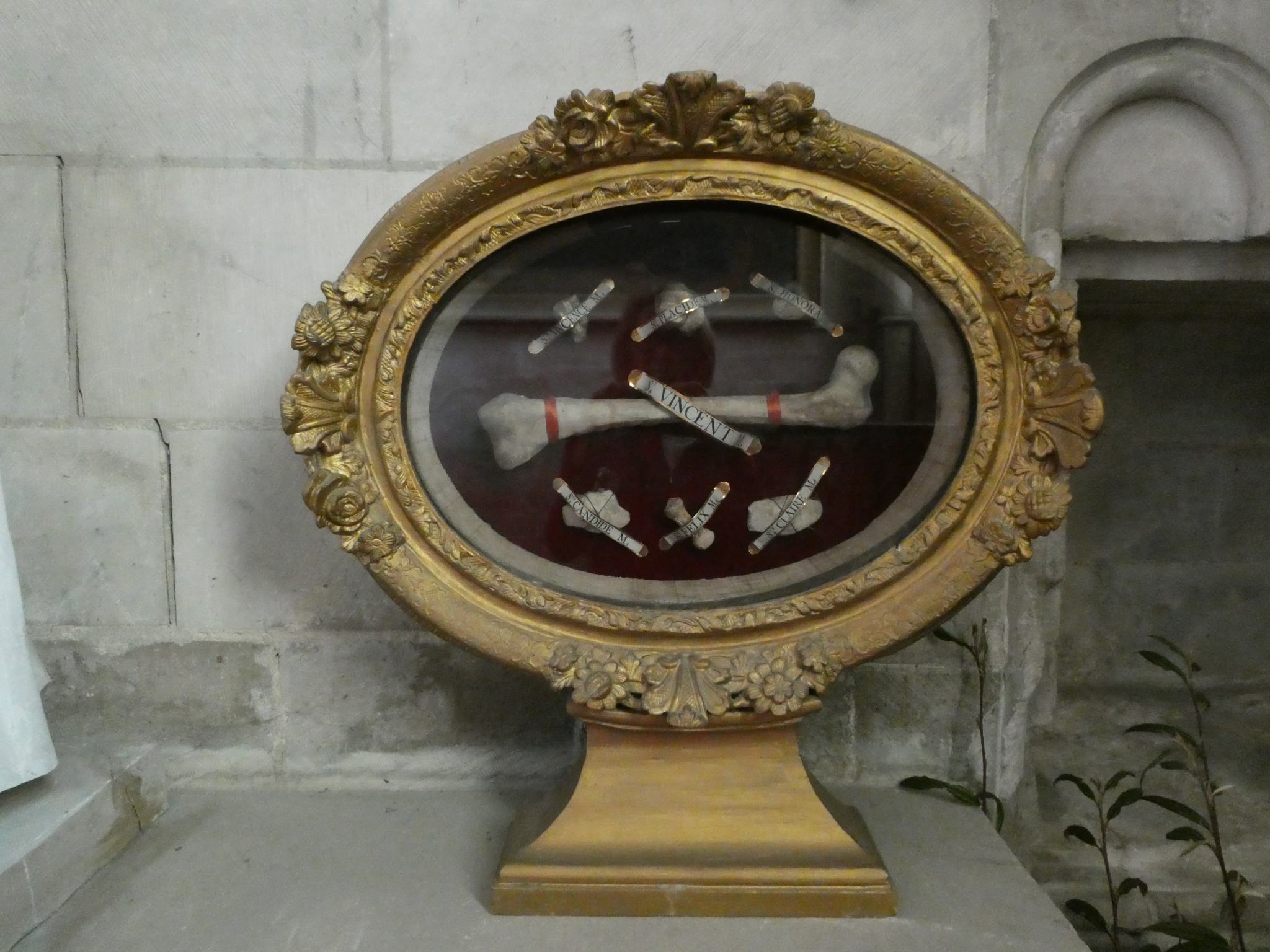 In the centre of the historic precinct is the remains of Chateau de Caen.  Established by William in 1060, the castle walls and surrounding dry moat are still intact.  A walk around the ramparts gives some good views over the city.

While William lounged around at the Chateau between jaunts to England, his wife Mathilde was busy with a construction of her own at the other end of town, the Abbaye-aux-Dames (Women’s Abbey).  His and hers abbeys.  How cute! 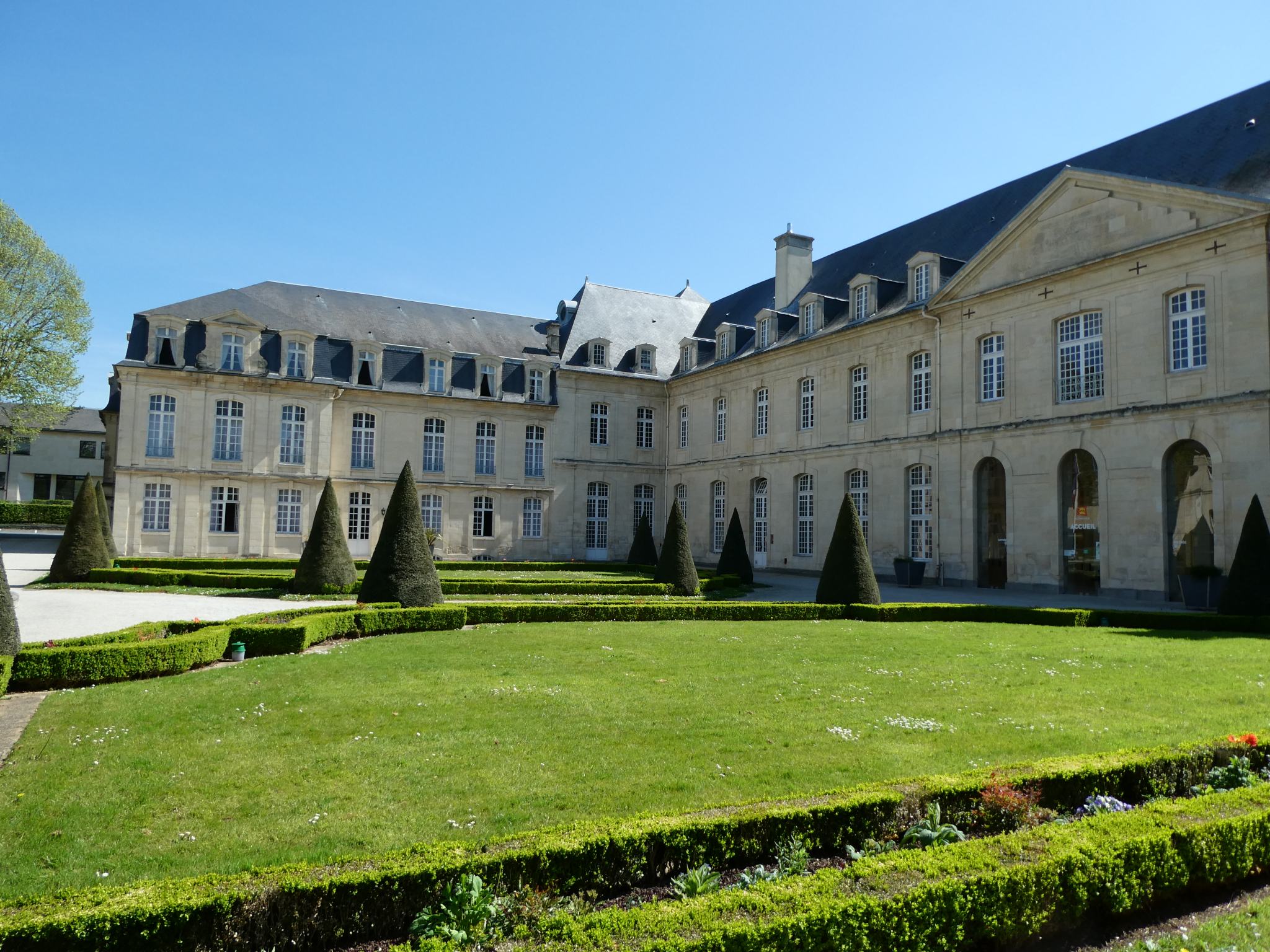 Mathilde’s grandmother and William’s grandfather were brother and sister.  They were therefore distantly related and required a papal dispensation to marry.  They didn’t bother.  One story is the abbeys were built by the couple to gain favour with the church when William’s disgruntled half-brother, the Archbishop of Rouen, tried to have the couple ex-communicated.

More likely it was a simple case of consolidating William’s power base.  He endowed the abbeys with immense wealth, making Caen the focus of privilege and favour which his rivals, the barons of Normandy centred around Rouen could not match.  Money buys influence.  The oldest story in the book.

Originally a Benedictine nunnery, the Women’s Abbey also has a church attached. 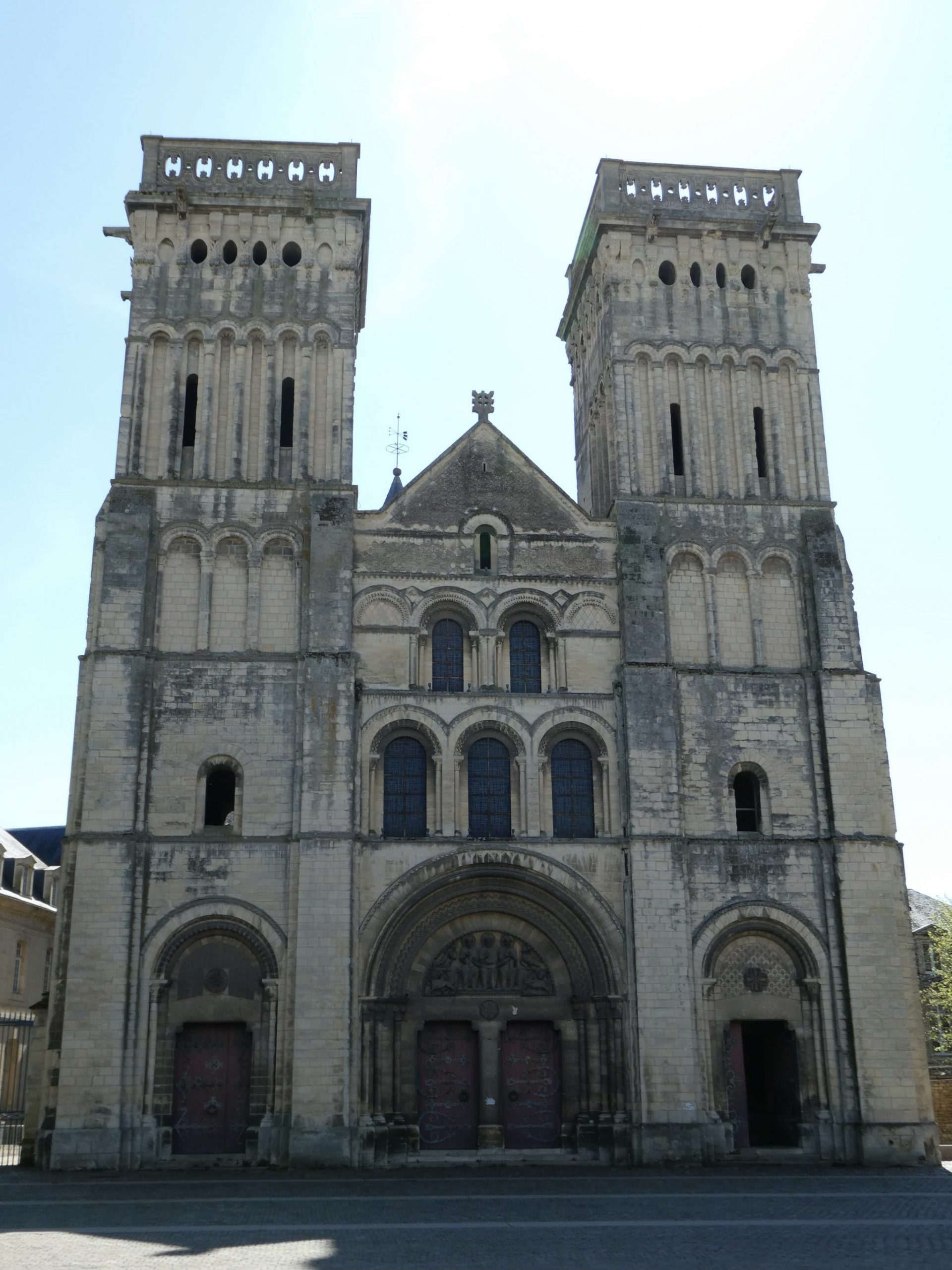 The Trinity Church contains Mathilde’s grave and is renowned for its pink stained glass windows. 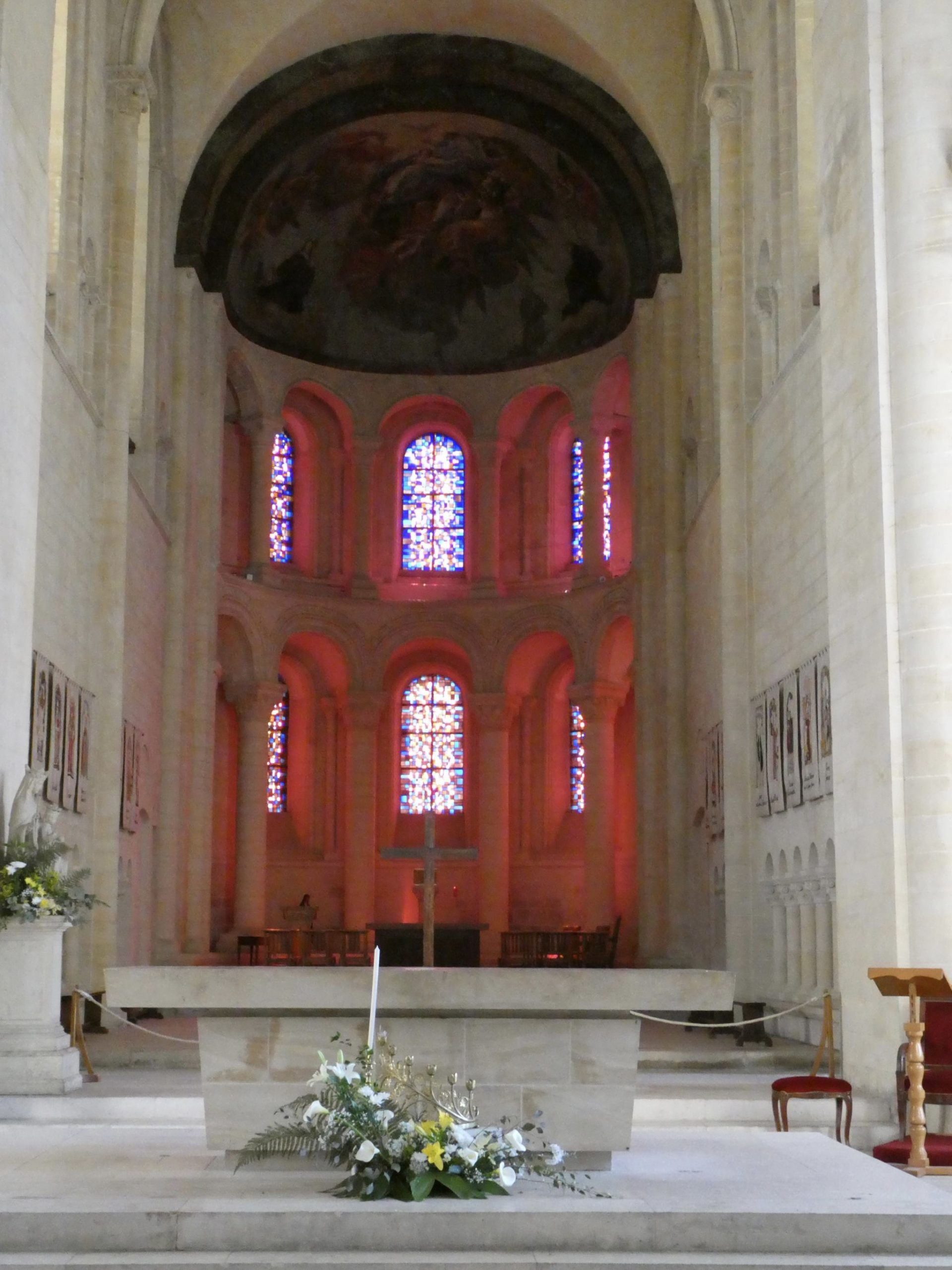 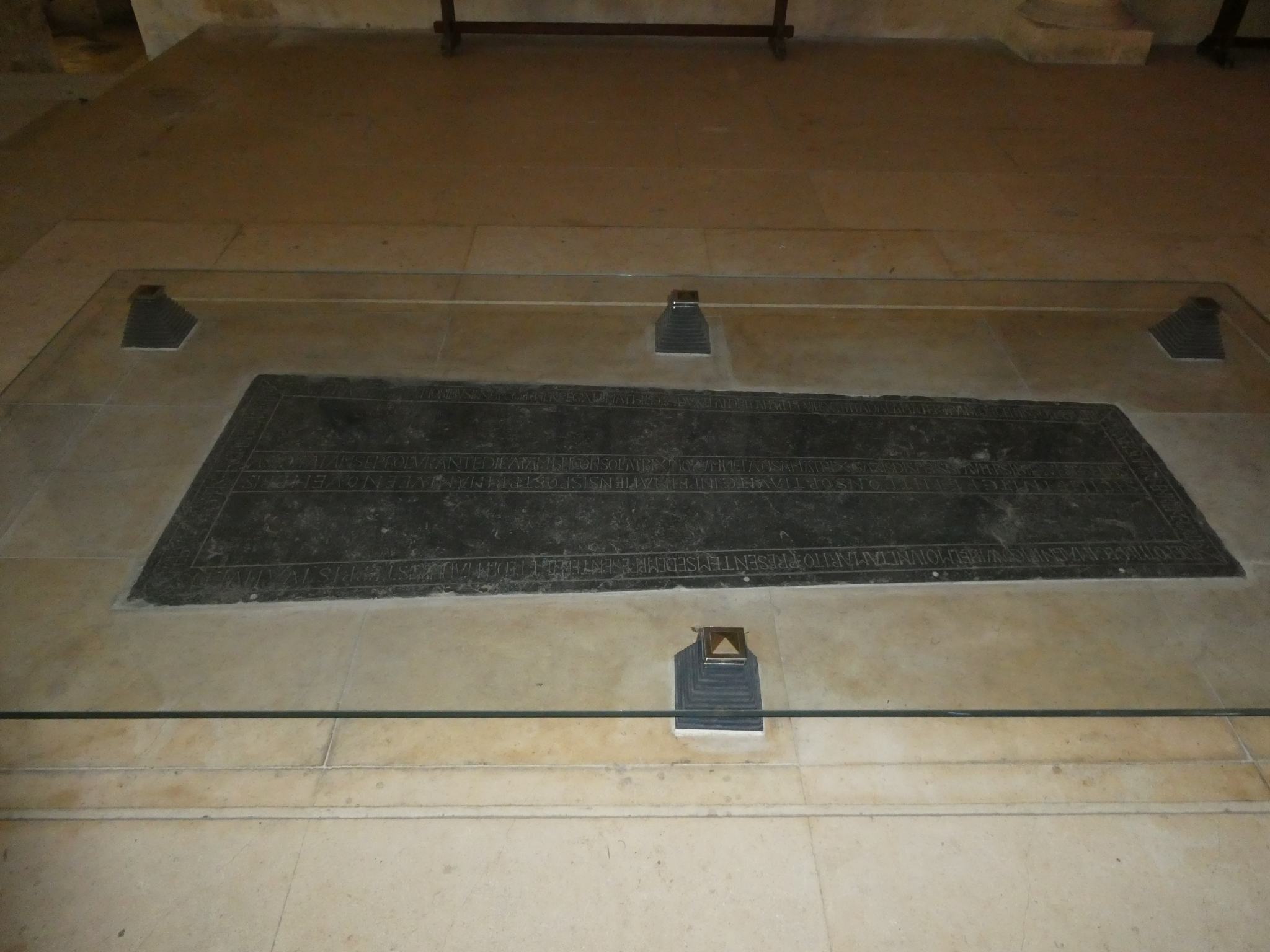 About 40 minutes walk from the town centre, Le Memorial – Un Musee pour la Paix (Memorial – A Museum for Peace) is said to be ‘one of Europe’s premier WWII museums’.  It is absolutely first class.  An audio guide talks visitors through an exhaustive – and ultimately exhausting – series of rooms chronicling the causes of WWII, the history of the conflict not only in Europe but also in Asia and the Pacific, and post war events like the Nuremberg trials.  There’s also a specific section on the Battle of Normandy.  It’s a mix of static exhibits, archival film footage, animation and audio testimony.  Excellent. 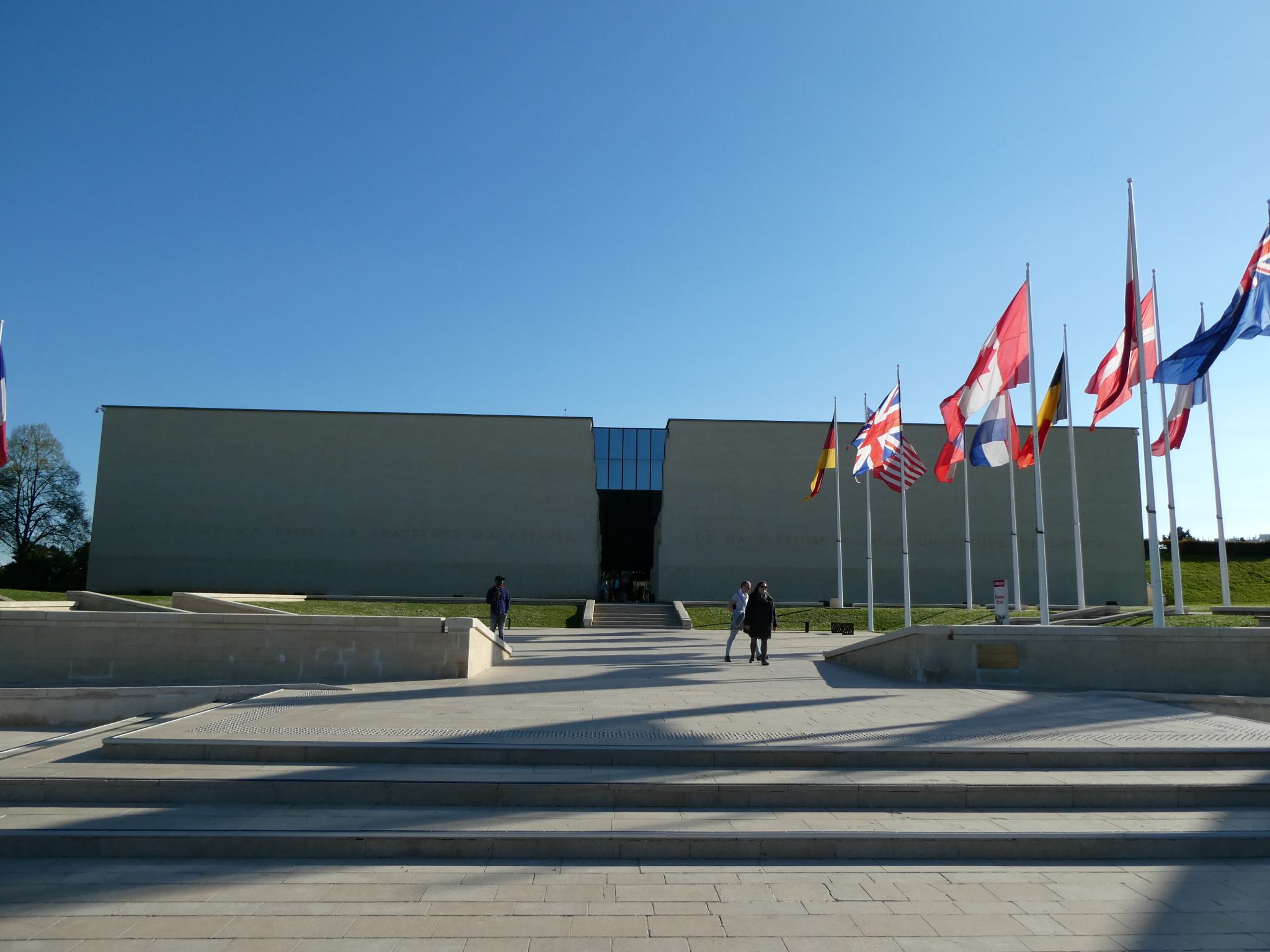 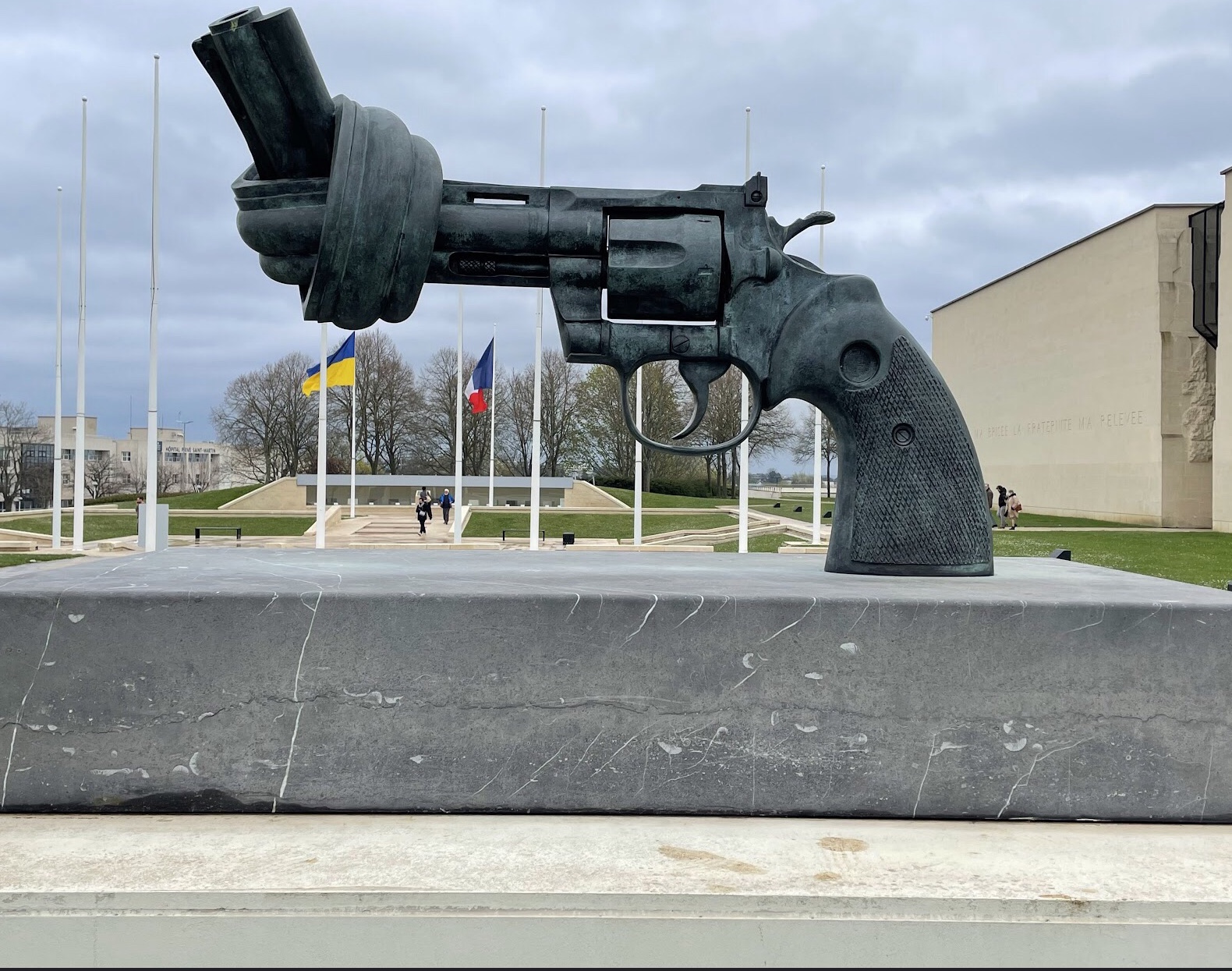 About 10km out of town is the Radar Museum.  The radar site near the village of Douvres was a vital element of the German coastal defence structure in WWII.  The radars were disabled in bombing raids ahead of the arrival of Allied troops but the Germans remained, determined to defend the position.  They held out until the Scots arrived with flame throwing tanks.  Game over.

The museum is housed within 2 restored bunkers. 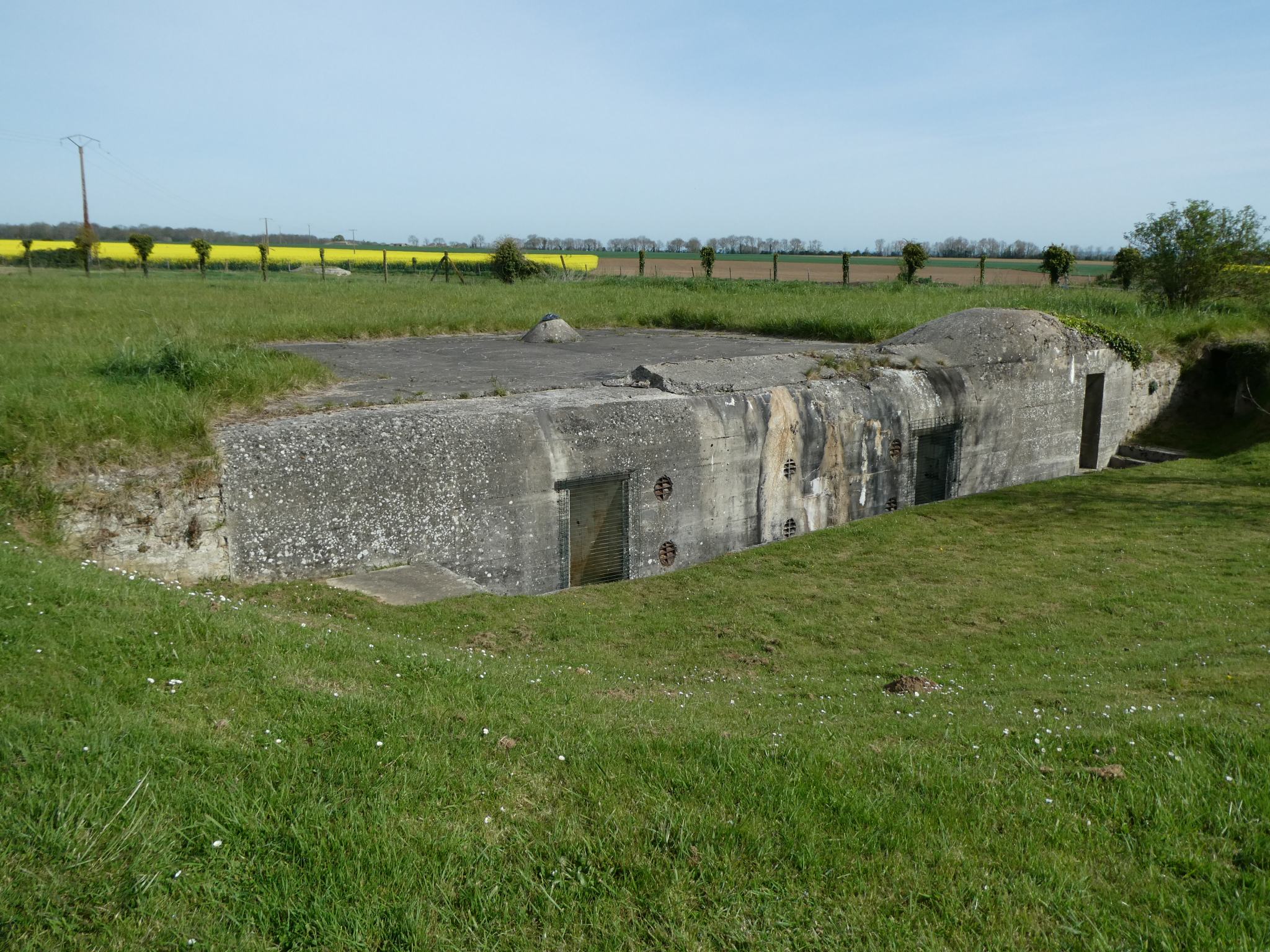 If you have an enthusiasm for the history of radar technology (zzzzzz) or its use in WWII (moderate zzzzz), it’s no doubt a ton of fun.  Otherwise, well, you can always ogle the big restored radars. 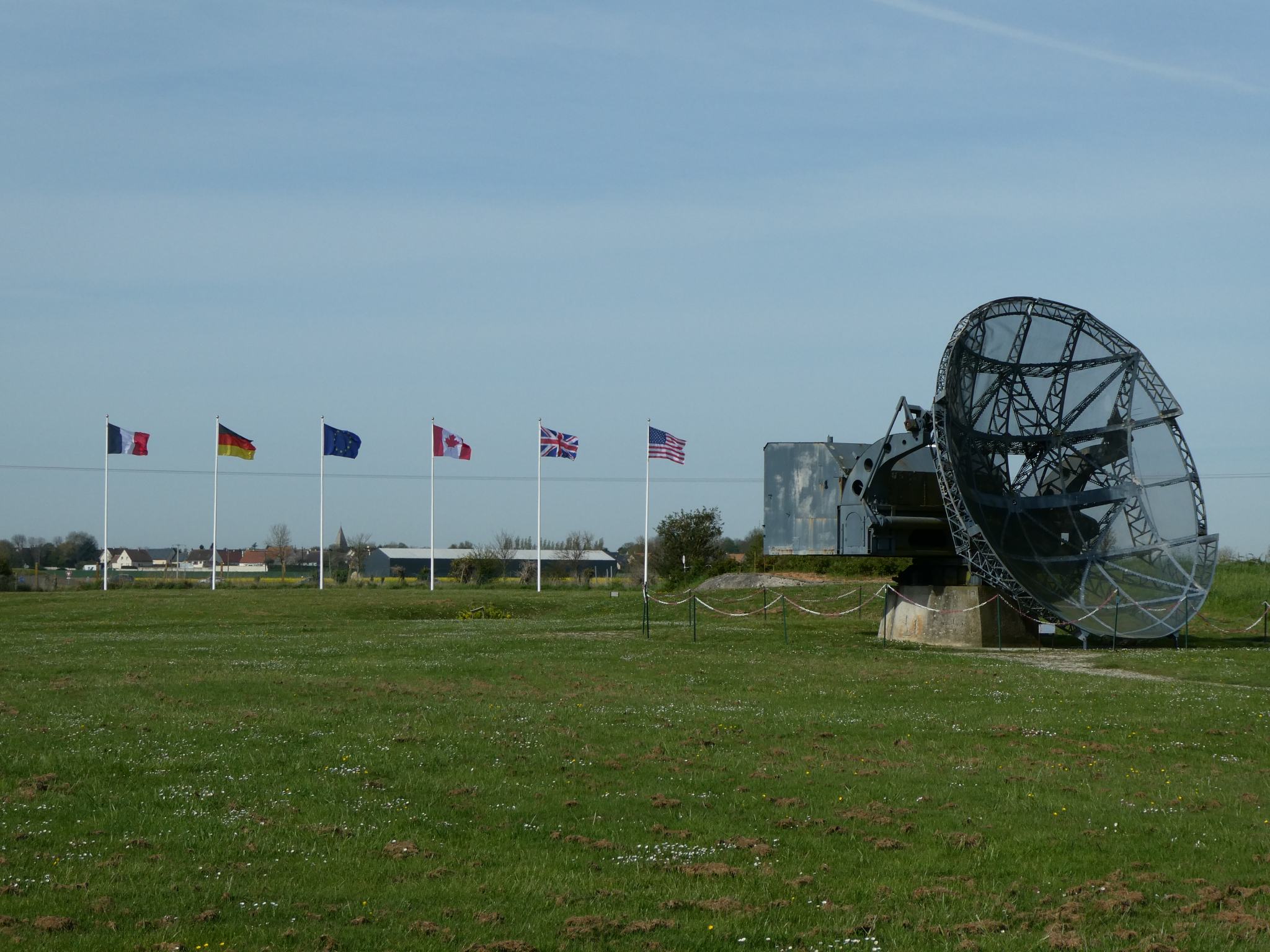 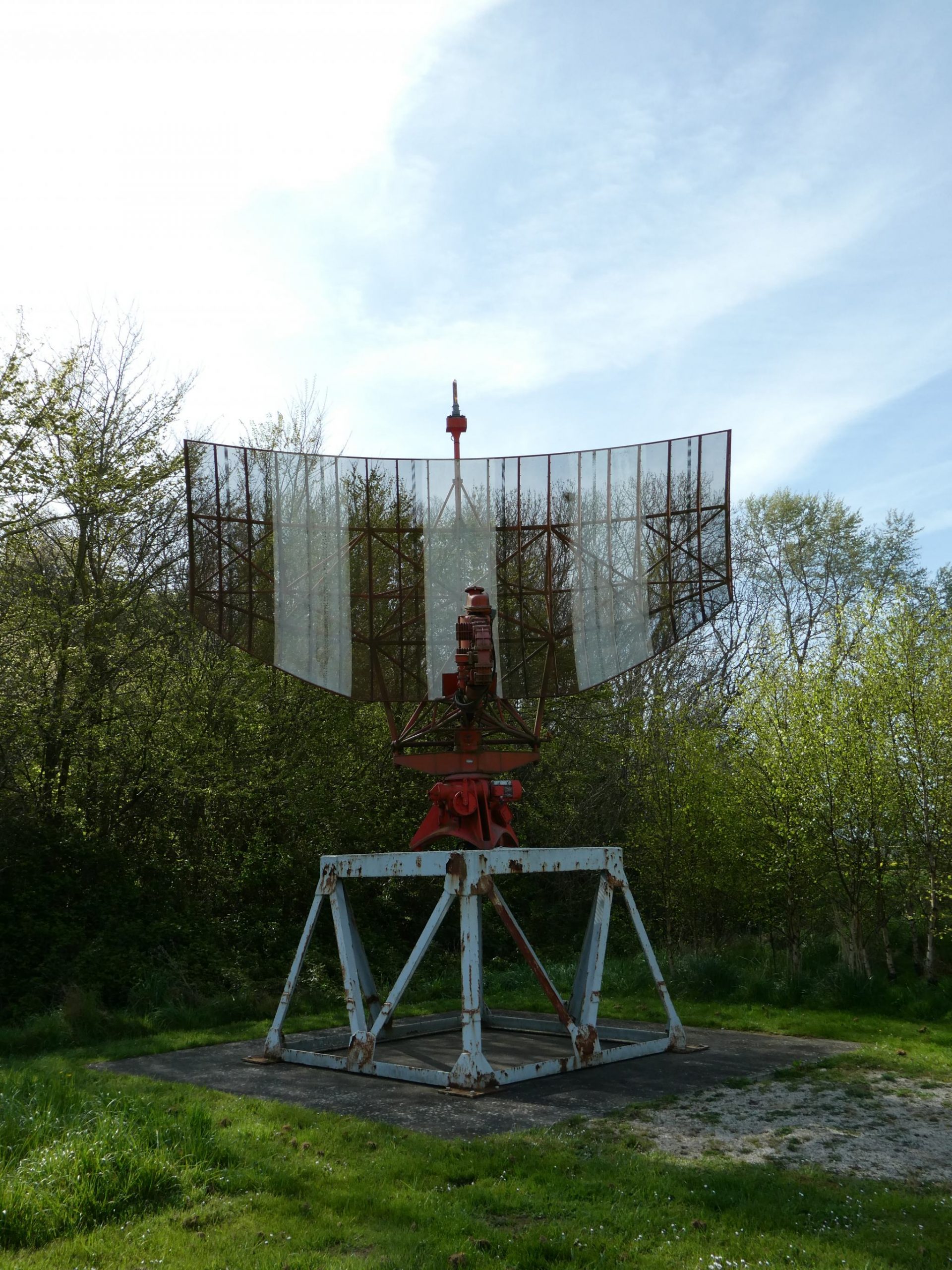 Up the road in Bayeux it was time for a tapestry.  Not just any tapestry.  The famous Bayeux Tapestry.  Which actually isn’t a tapestry at all, but woollen embroidery on linen.  The 68 metre long scroll tells the story of how William the Bastard, Duke of Normandy became William the Conqueror, King of England.  Well, if your name was William the Bastard you too would probably try and do something momentous enough to earn a name change.

It was woven as a series of tableaux depicting the events leading up to and during William’s defeat of his English rival at the Battle of Hastings and consequent coronation as king.  Conjecture surrounds its purpose.   Most scholars now agree it was commissioned by another of William’s half-brothers, Bishop Odo who was present at the battle and became the Earl of Kent.  The tapestry tells the story very much from the Norman perspective.  Perhaps it was meant as a propaganda piece to educate the unlearned English peasants why William was indeed the legitimate heir to the throne.

The presentation is very clever.  The tapestry is hung behind glass along a curved wall in a darkened passage.  Above each tableaux is a number, 58 in total.  A headset explains each one and the story thus unfolds as you move from one to the next.  The audio won’t rewind or stop.  You have to keep moving, and it means everyone moves through at the same pace.  It stops slack jawed gawpers clogging up the display.  Very clever.

Of course you can’t photograph it given the delicacy of the almost 1,000 year old fabric, so there’s a few reproductions of key sections in the small museum for those of us who need a record. 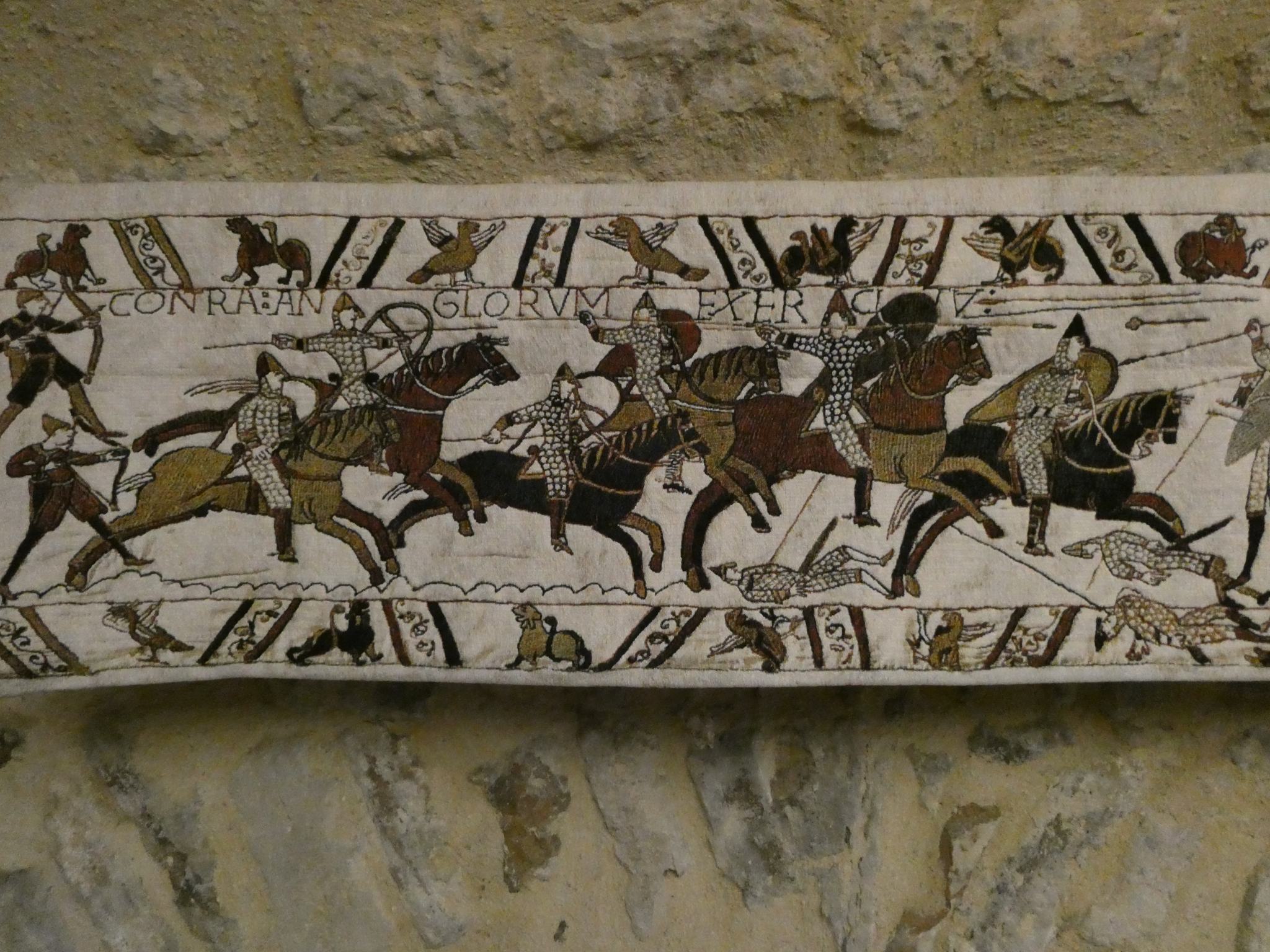 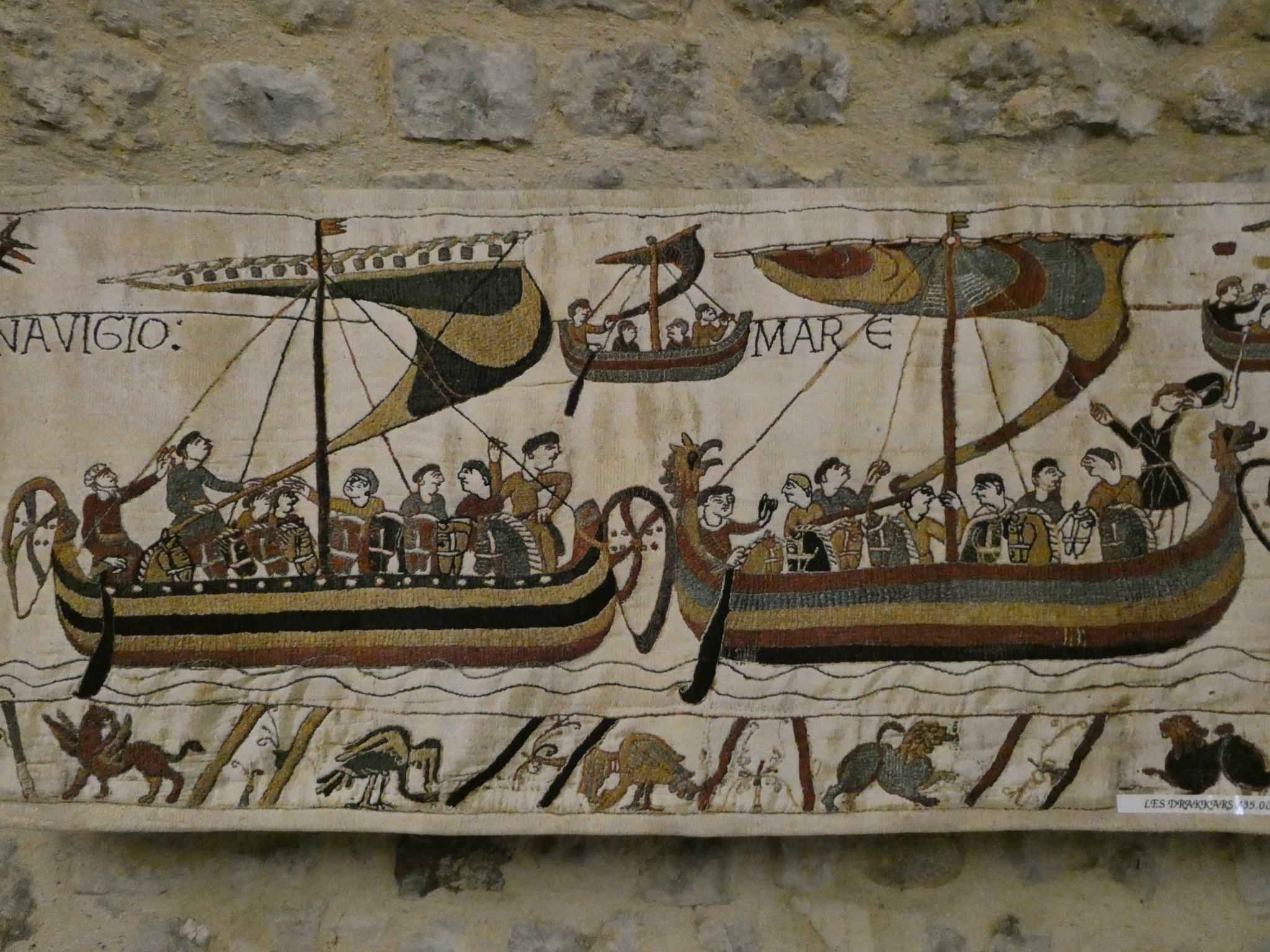 Tapestry aside, Bayeux is picturesque.  Despite being the largest town near the D-Day landing zone in WWII, it was not bombed.  It was the first town liberated by the Allies’ ground forces and the liberation was fast, so it suffered little damage in the fighting that followed.  Many buildings from the 13th century right through to the 18th century remain in tact and it’s delightful to wander around. 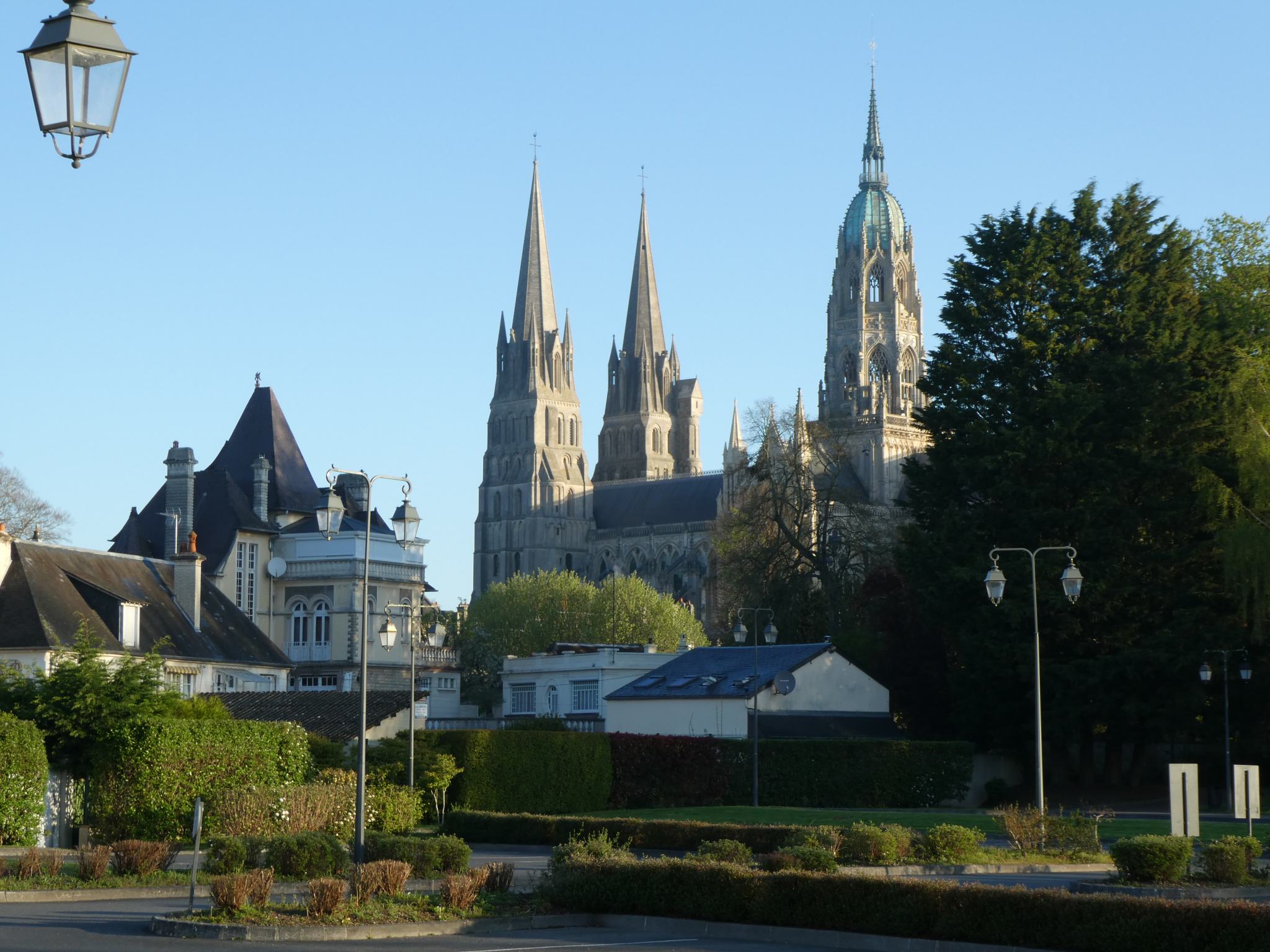 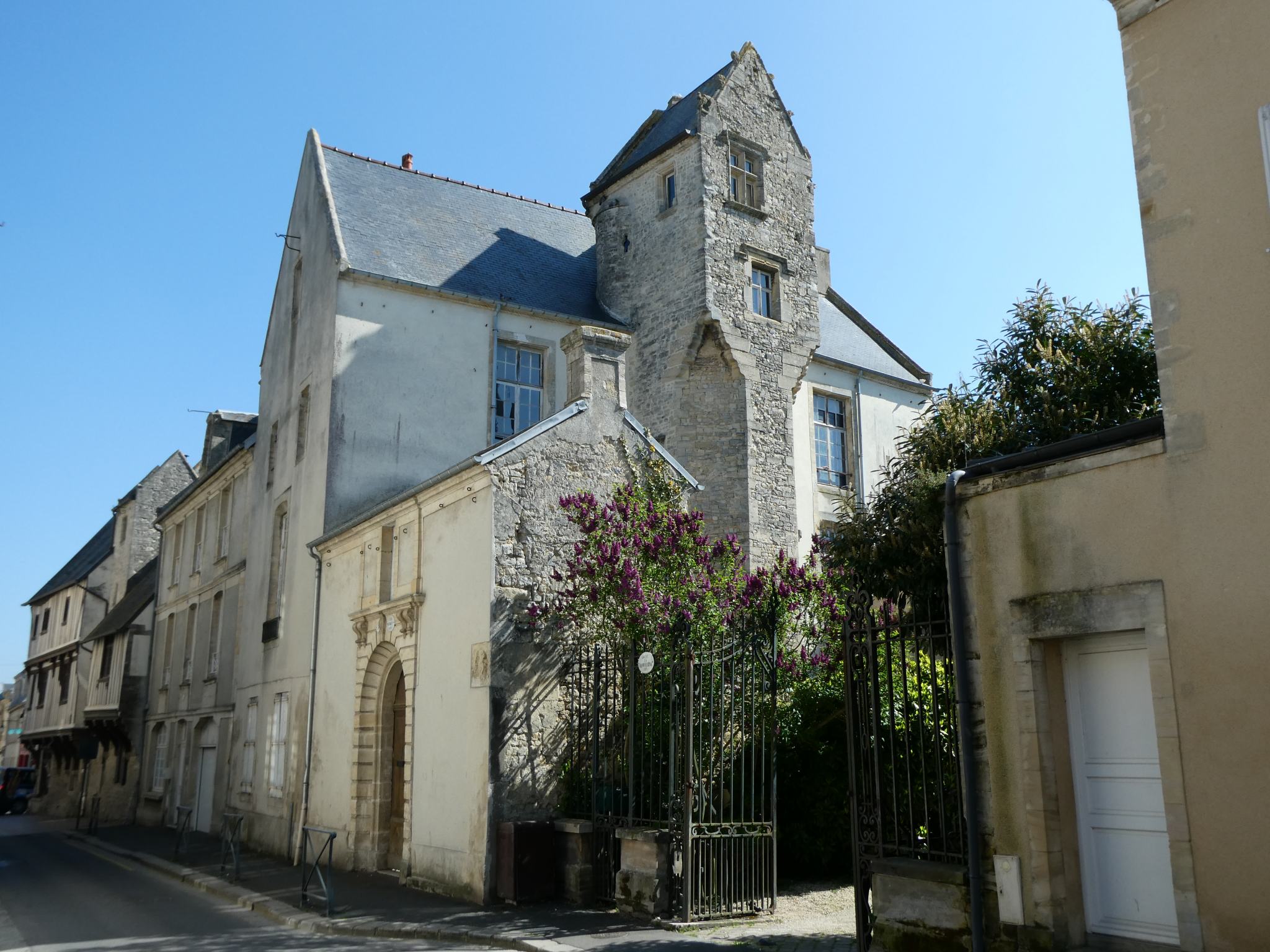 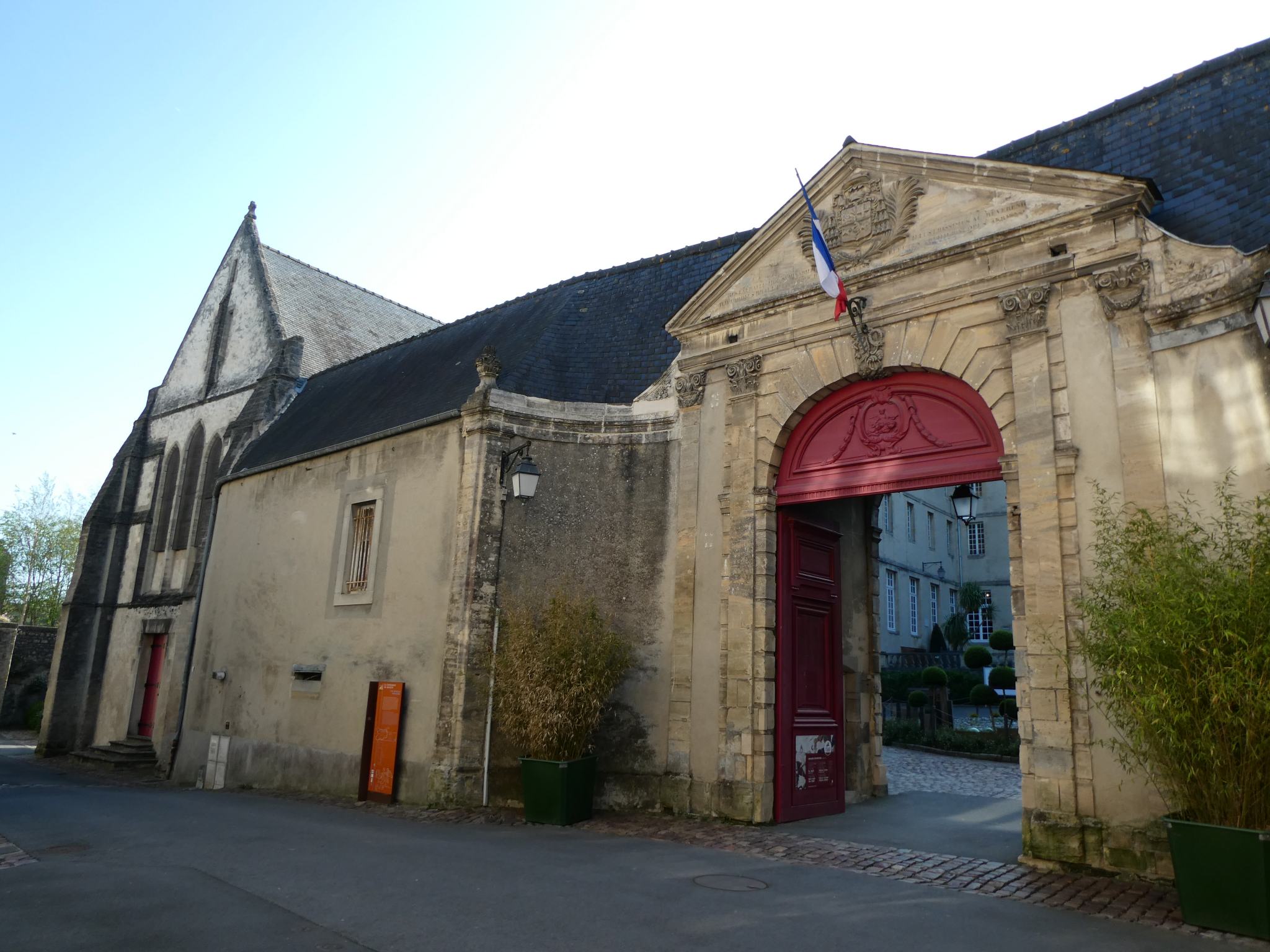 But of course many died in the fighting in this area in 1944.  The Bayeux War Cemetery on the edge of town is the largest of the 18 Commonwealth cemeteries in Normandy.  4,848 soldiers, mainly from the United Kingdom, are interred here. 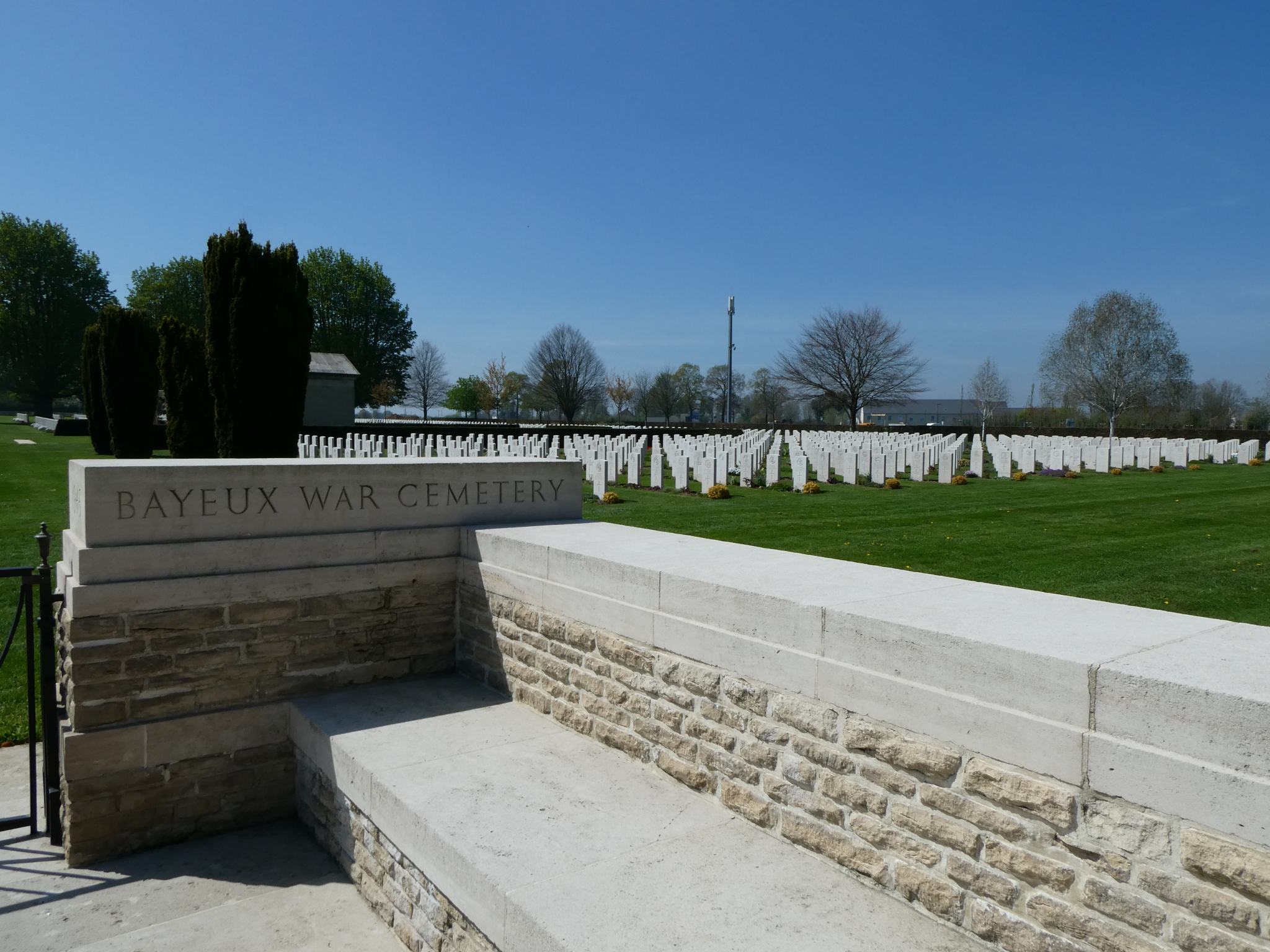 Across the road is a memorial to the 1,806 Commonwealth soldiers whose remains were never found. 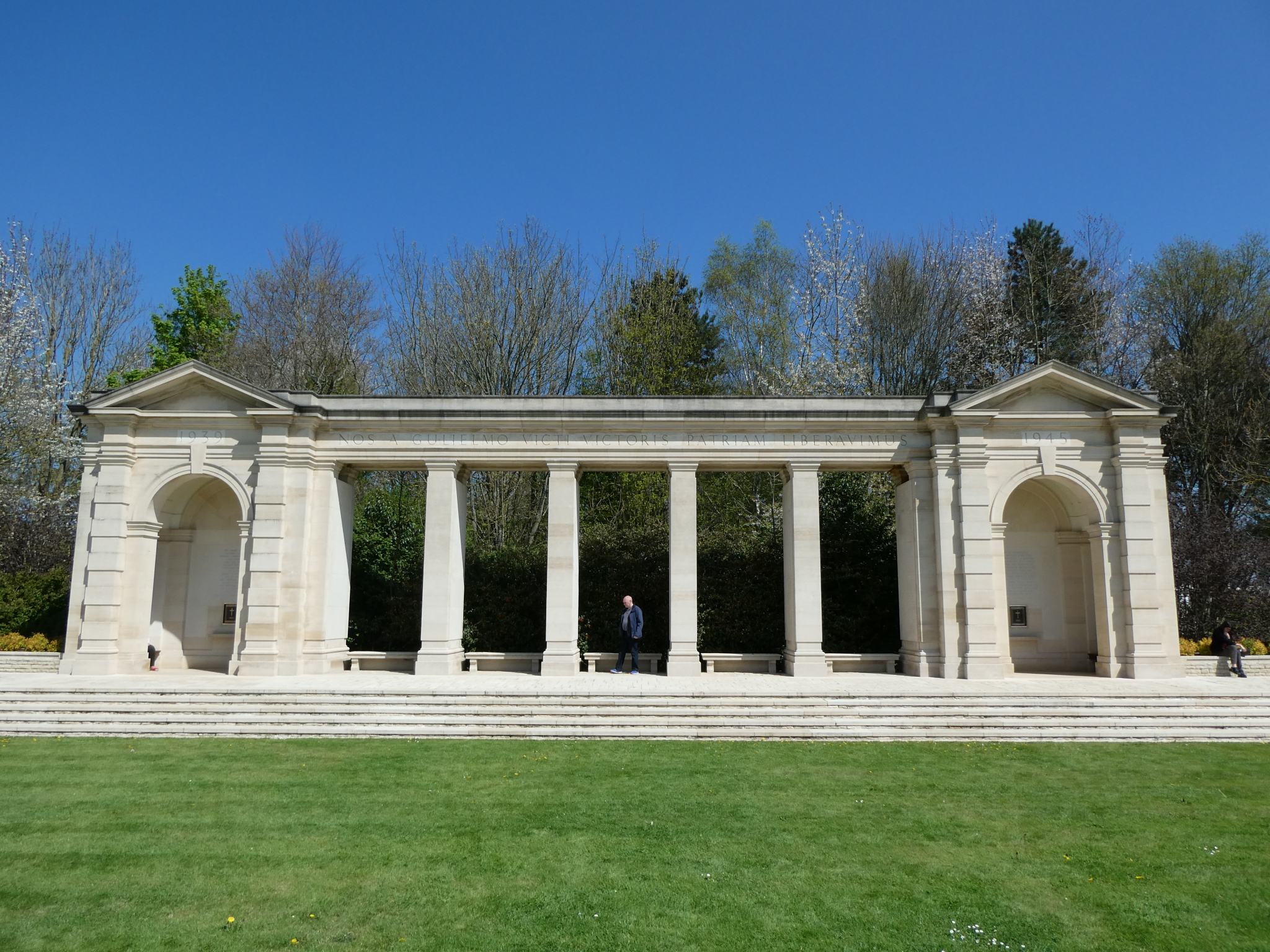 The Latin inscription reads “We, once conquered by William, have now liberated the Conqueror’s native land”.   Yes, the spirit of William is everywhere here.