We had planned to visit Mont Saint-Michel on our way from Caen to Dinan but the host for our digs in Dinan was horrified.  Visiting the most visited site in France after the Eiffel Tower on Easter Sunday? Sacre Bleu!  Don’t do it!  We heeded her advice and deferred until mid-week.

The Mont is a fortified island 1km offshore.  In medieval times, pilgrims walked to the island at low tide.  These days a causeway joins it to the mainland.  Cars aren’t allowed so there are shuttle buses or you can walk the 3km from the car park to the island.  We arrived just after the shuttles started.  No waiting.

The shuttles drop visitors a short distance from the end of the causeway.  As we approached the island, all was quiet except for a few delivery trucks outside the walls. 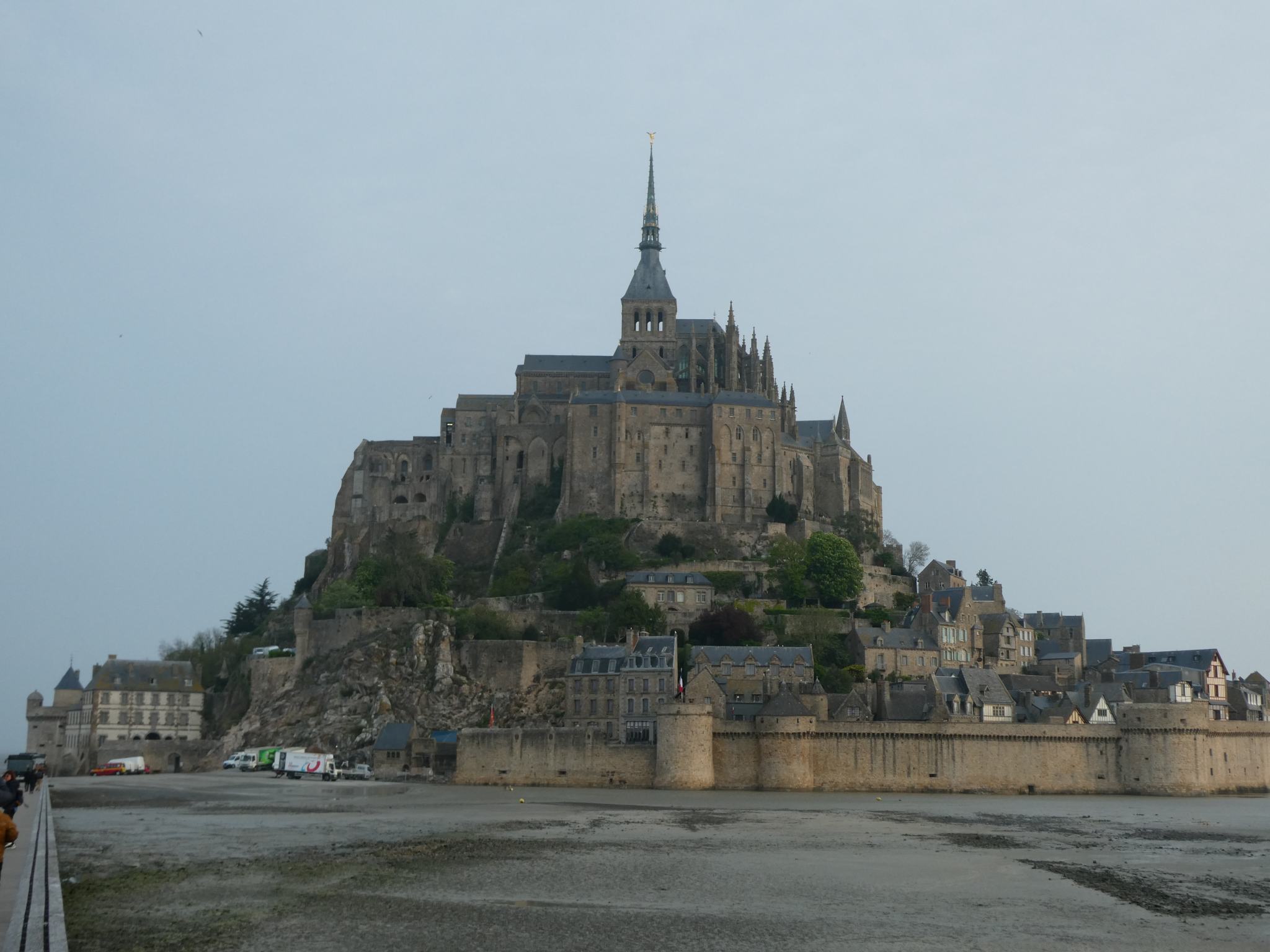 Mont Saint-Michel Bay has a tidal variation of 15 metres, one of the largest in the world.  The island goes from being marooned on a sand flat to almost if not completely surrounded by water every tidal cycle.  It’s commonly said that the incoming tide can outrun a galloping horse, which evokes a great image but isn’t actually true.  Still, it does move fast – about 6.5kph.

And if you are extremely lucky, as we were, you may witness a tidal bore.  No, it’s not some fisherman banging on about tide times.  It’s when an incoming tide pushes against residual outgoing tidal flow from rivers emptying into the bay, causing a surge at the leading edge of the incoming tide.  Here, it takes the form of a single 50cm high wave which engulfs the whole bay.  It happens 36 to 48 hours after the full and new moon, so only about 20 times per year.  From the ramparts we saw this surfer riding it all the way up the serpentine estuary.  That’s a few kms at least.  What a blast! 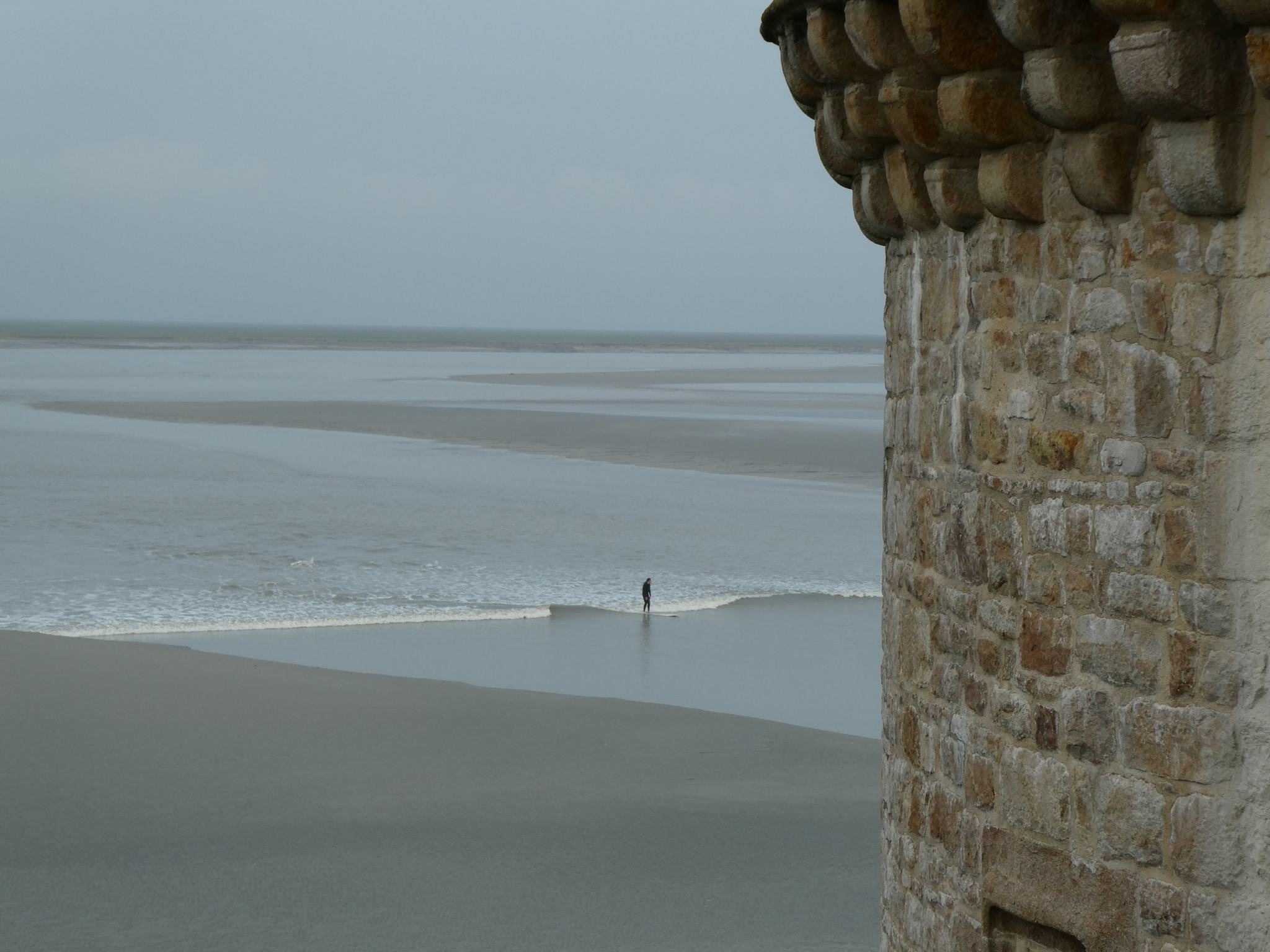 Then we headed to the Abbey – the biggest drawcard on the island.  Second in line when it opened.  No waiting. 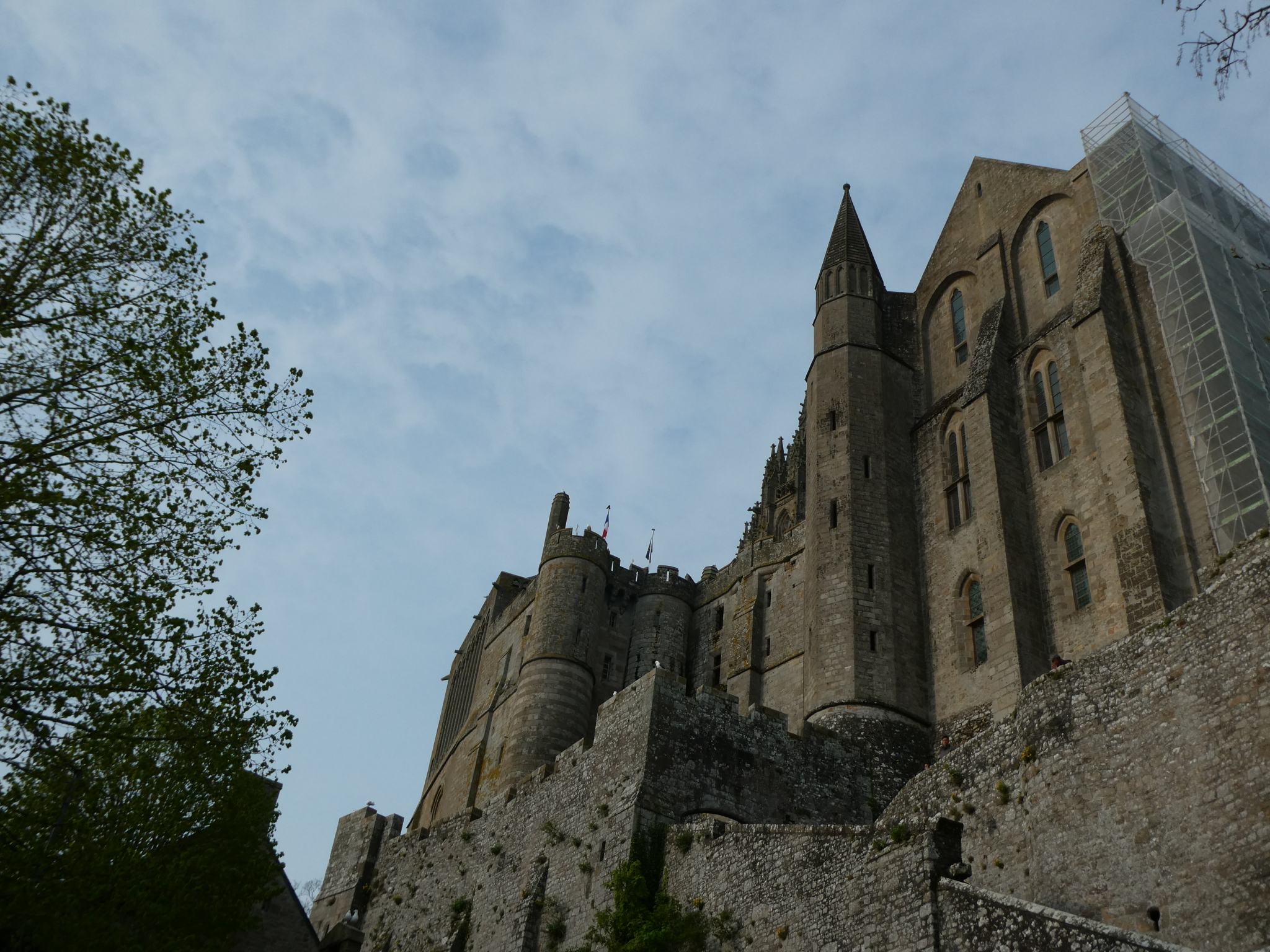 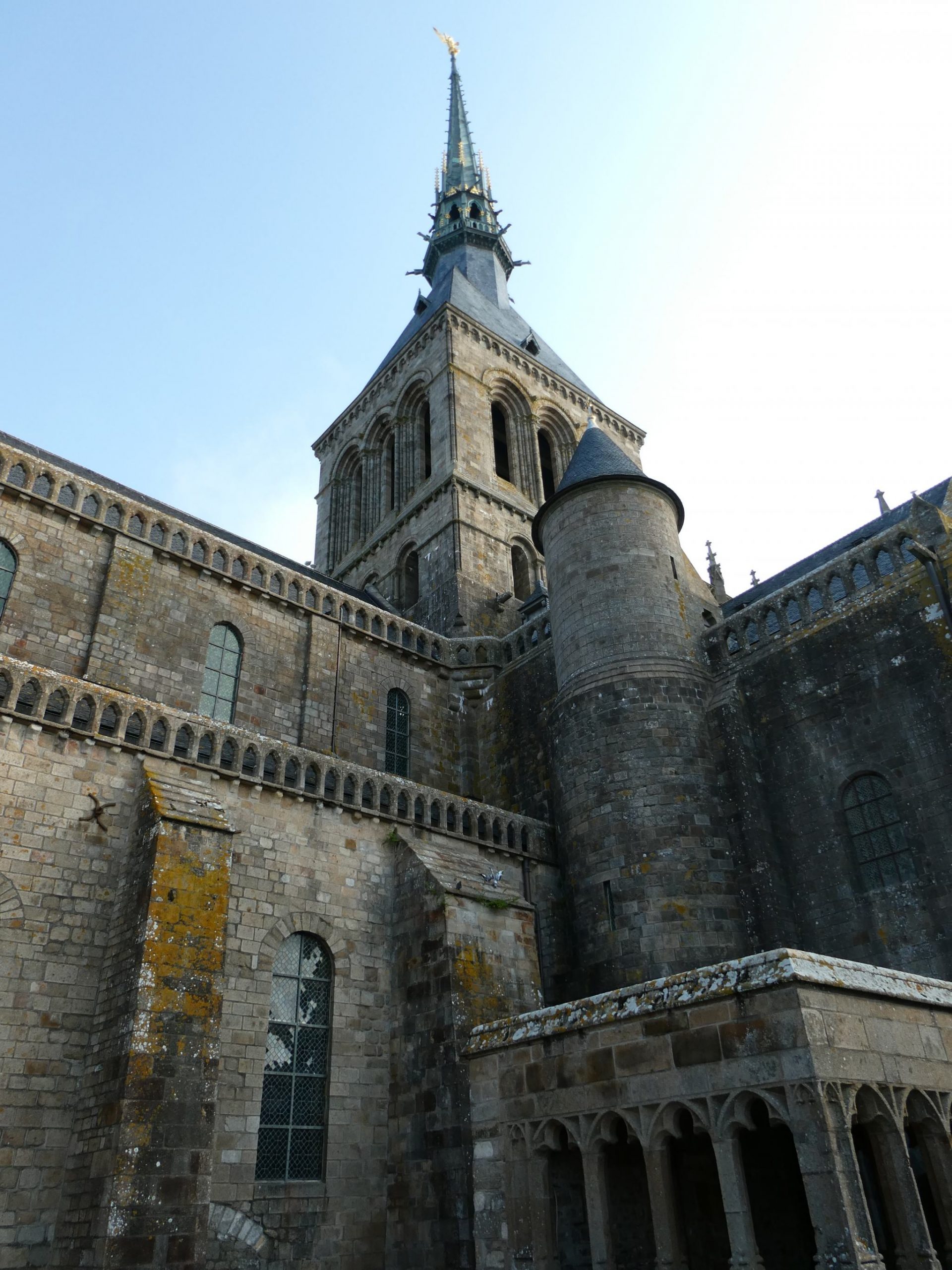 There’s been a monastic institution here since the 8th century.  According to church legend, the Archangel Michael appeared to the bishop of the nearby town of Avranches and instructed him to build a church on the rock.

The abbey and monastery thrived in the Middle Ages and were extended several times, becoming both wealthy and a major destination for pilgrims known as Miquelots who walked from as far away as Italy and Germany.  It went out of fashion, it seems, and by the time of the French Revolution there were few monks left.

The abbey was closed and the building converted into a prison.  Eventually that too was closed and in the mid 1870s it was declared a national monument.  The  abbey church was re-consecrated and the whole complex carefully restored.  Benedictine monks returned. 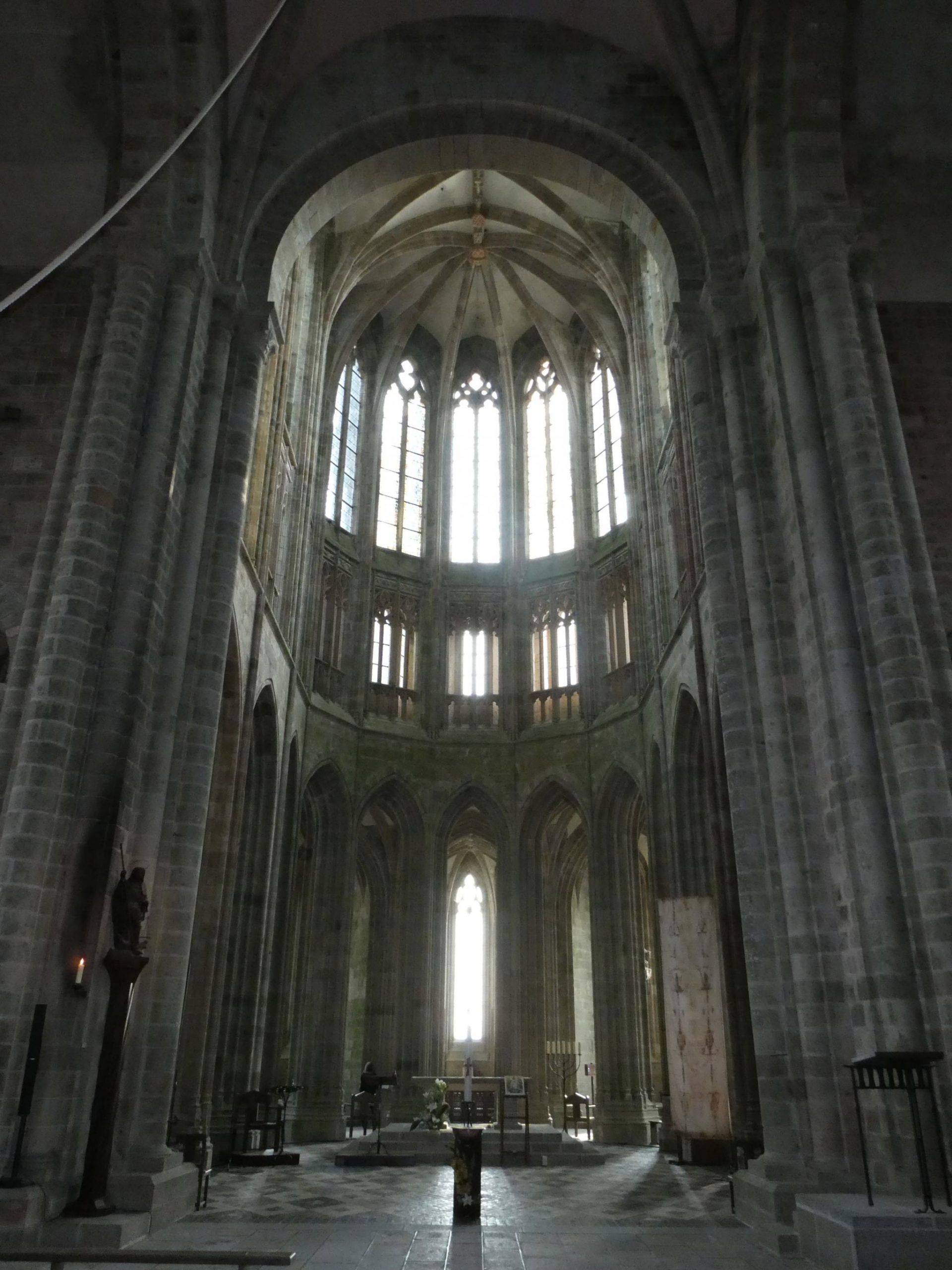 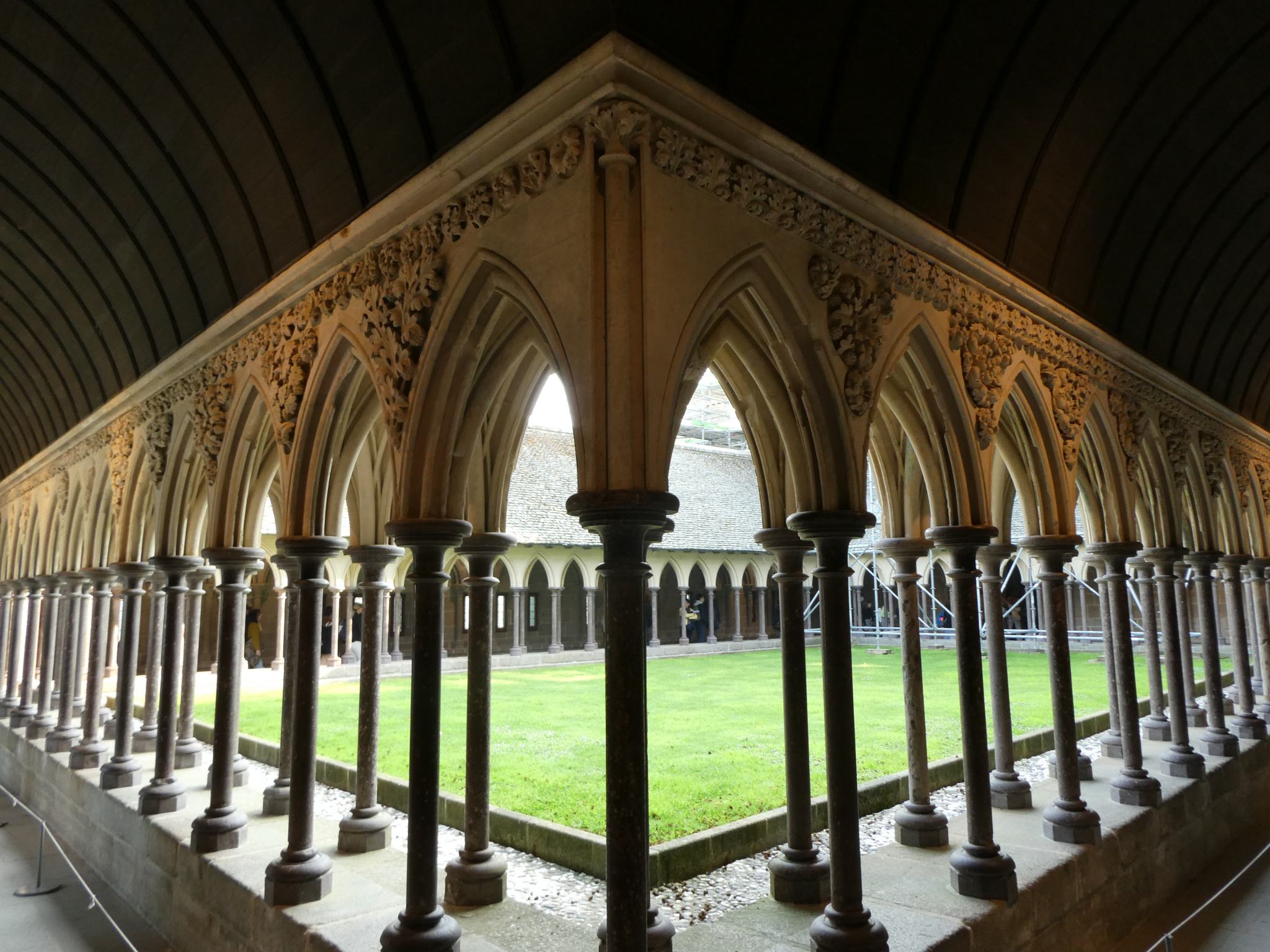 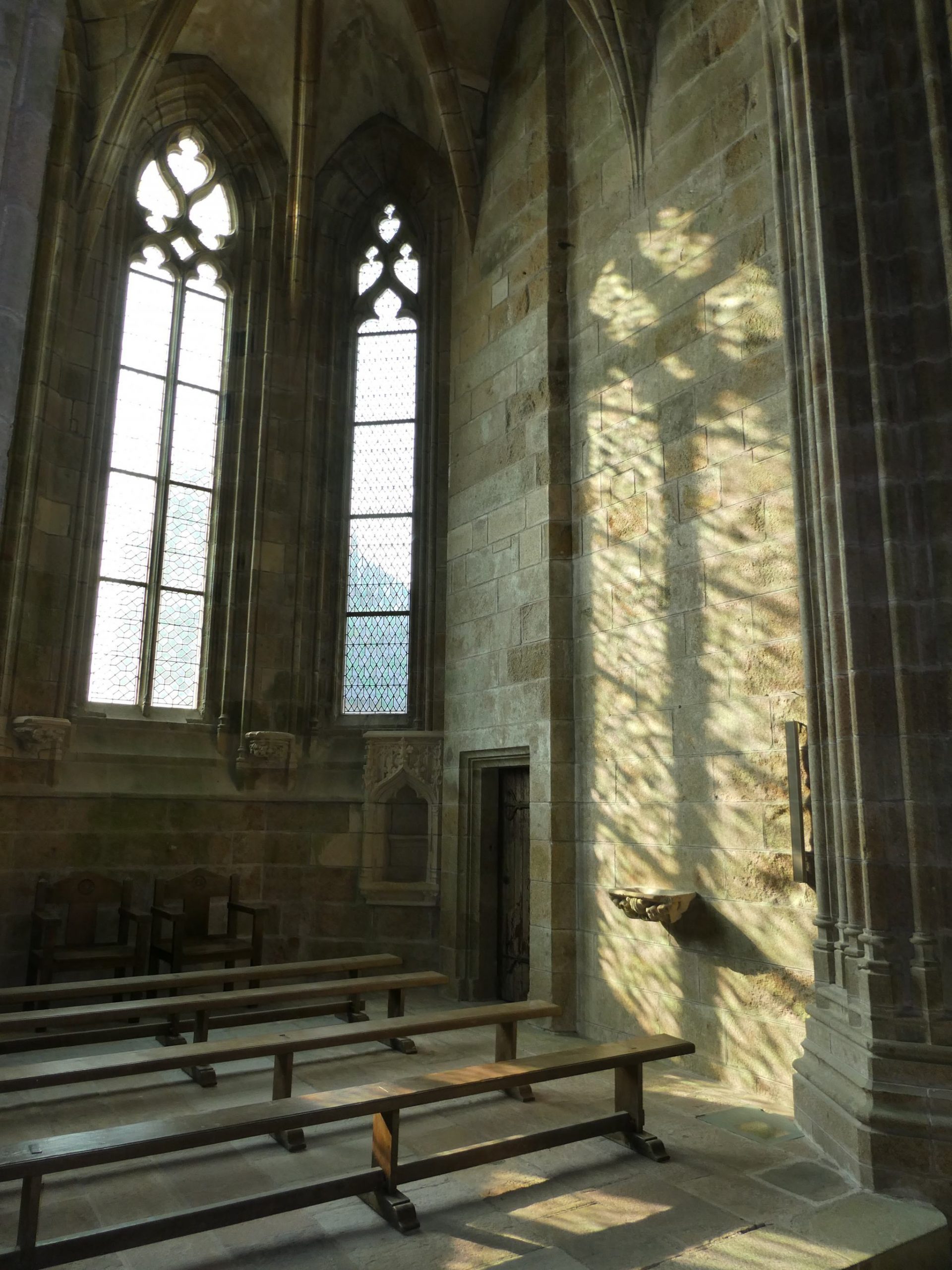 In 2001 the Benedictines vacated and were replaced by the Monastic Fraternities of Jerusalem, a new monastic order created in Paris in 1975.  They are a segregated community of about a dozen monks and nuns who spend their days in prayer and attending services.  But even cloistered away here, they can’t avoid domestic chores. 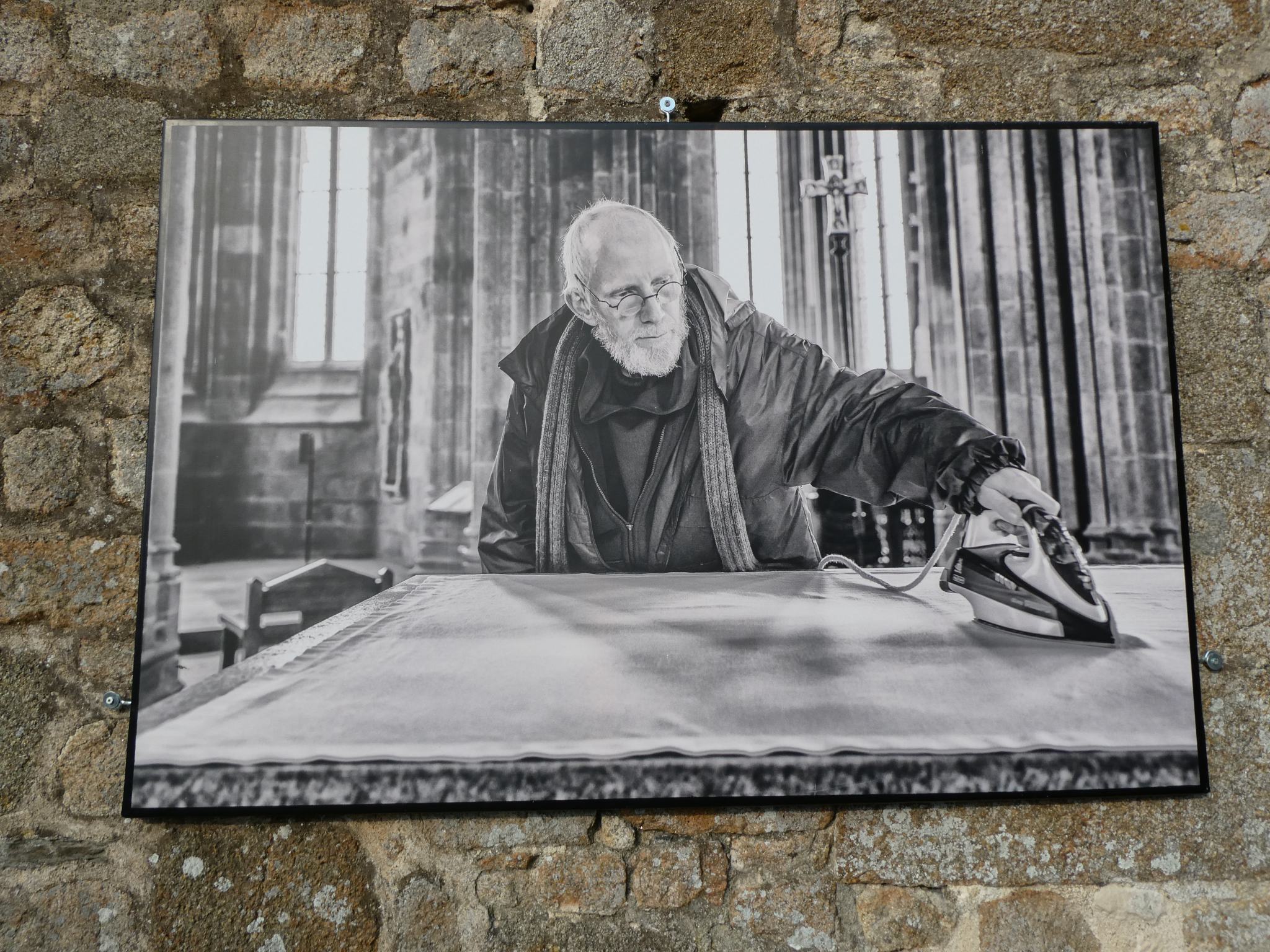 Inside there’s plenty of evidence of the time when many more monks lived here.  This is the refectory and below it the huge fireplaces in the kitchen. 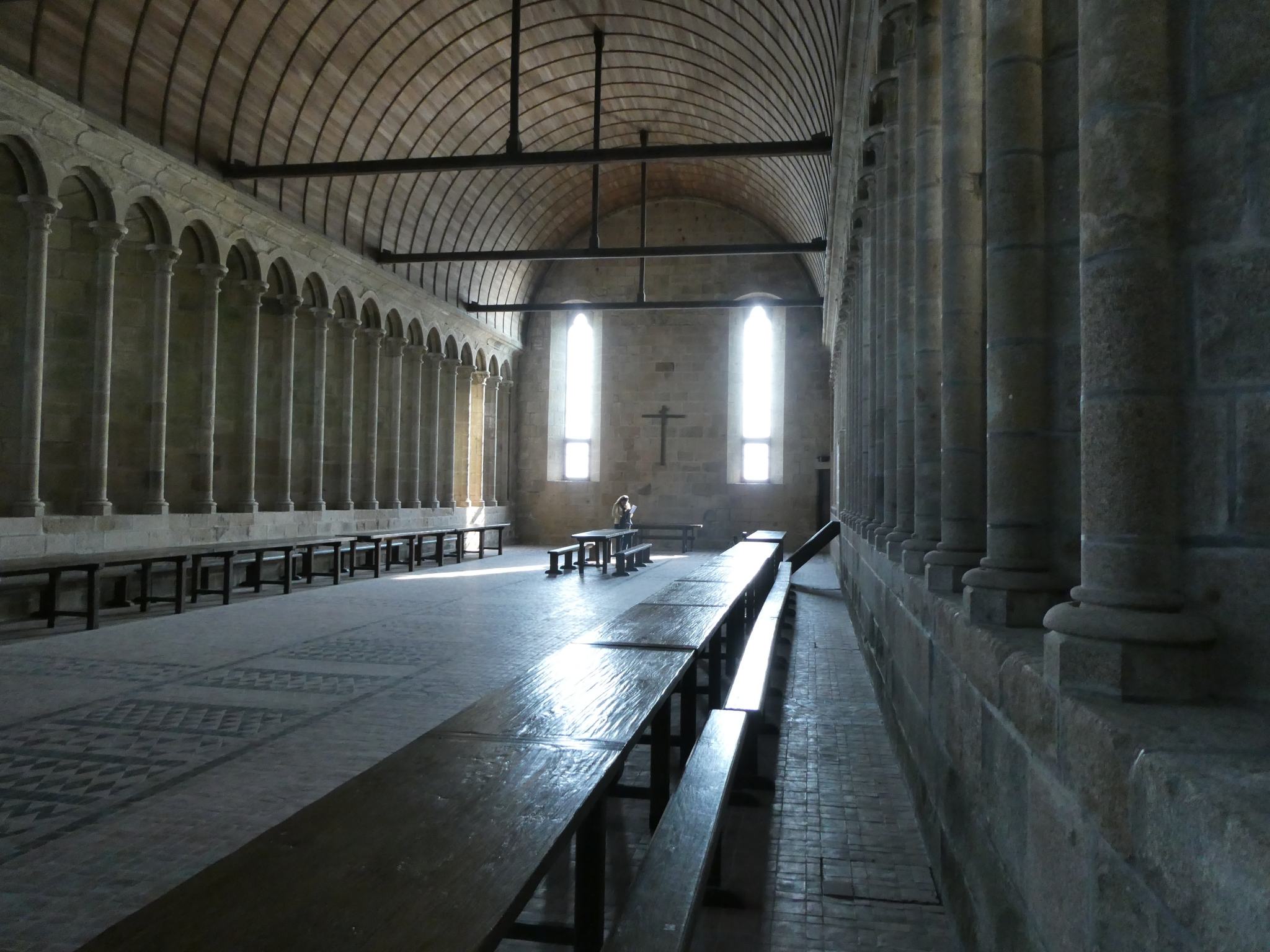 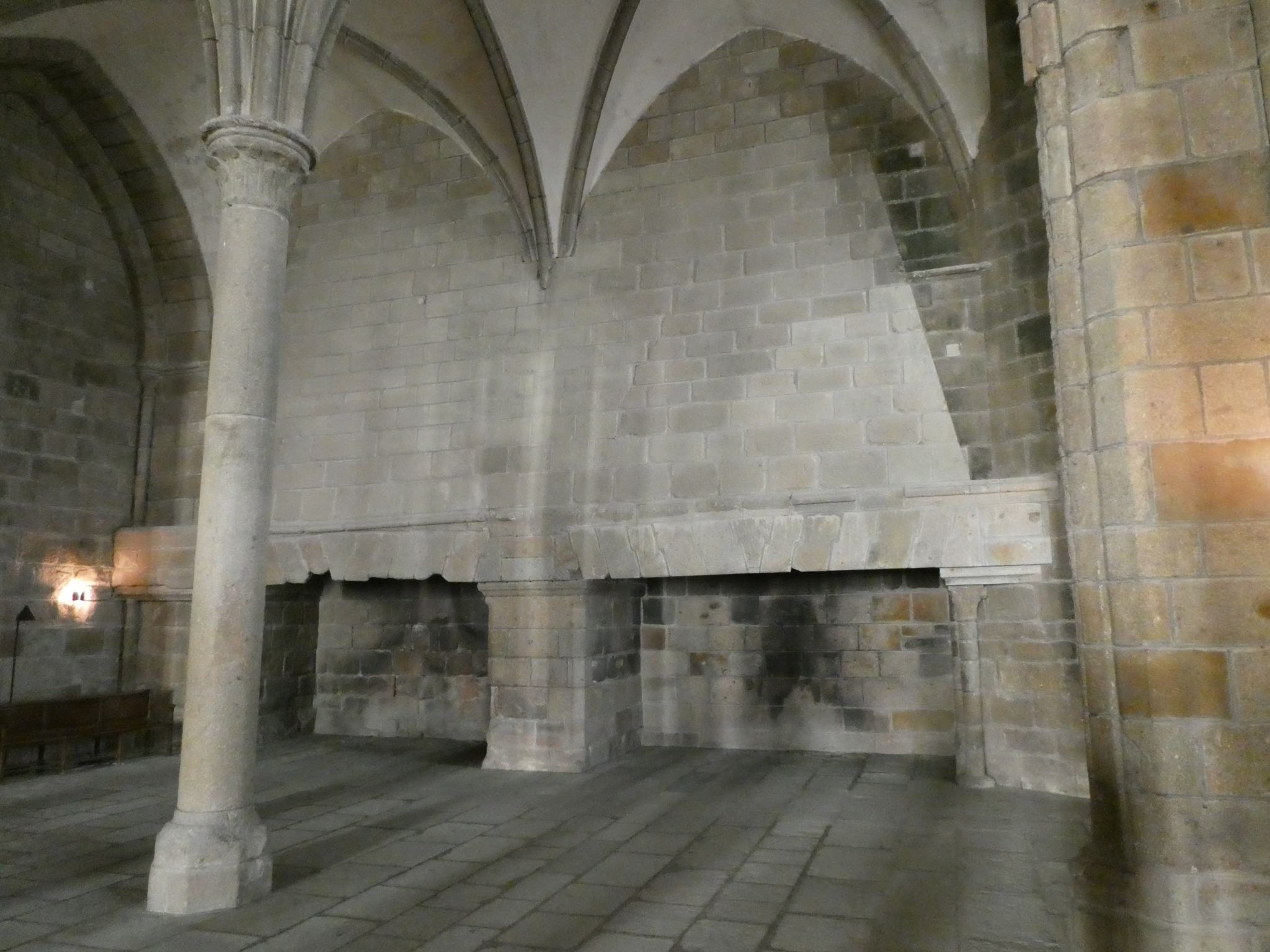 Aside from the Abbey, visiting the Mont is really all about wandering the stone streets and admiring the physicality of the location. 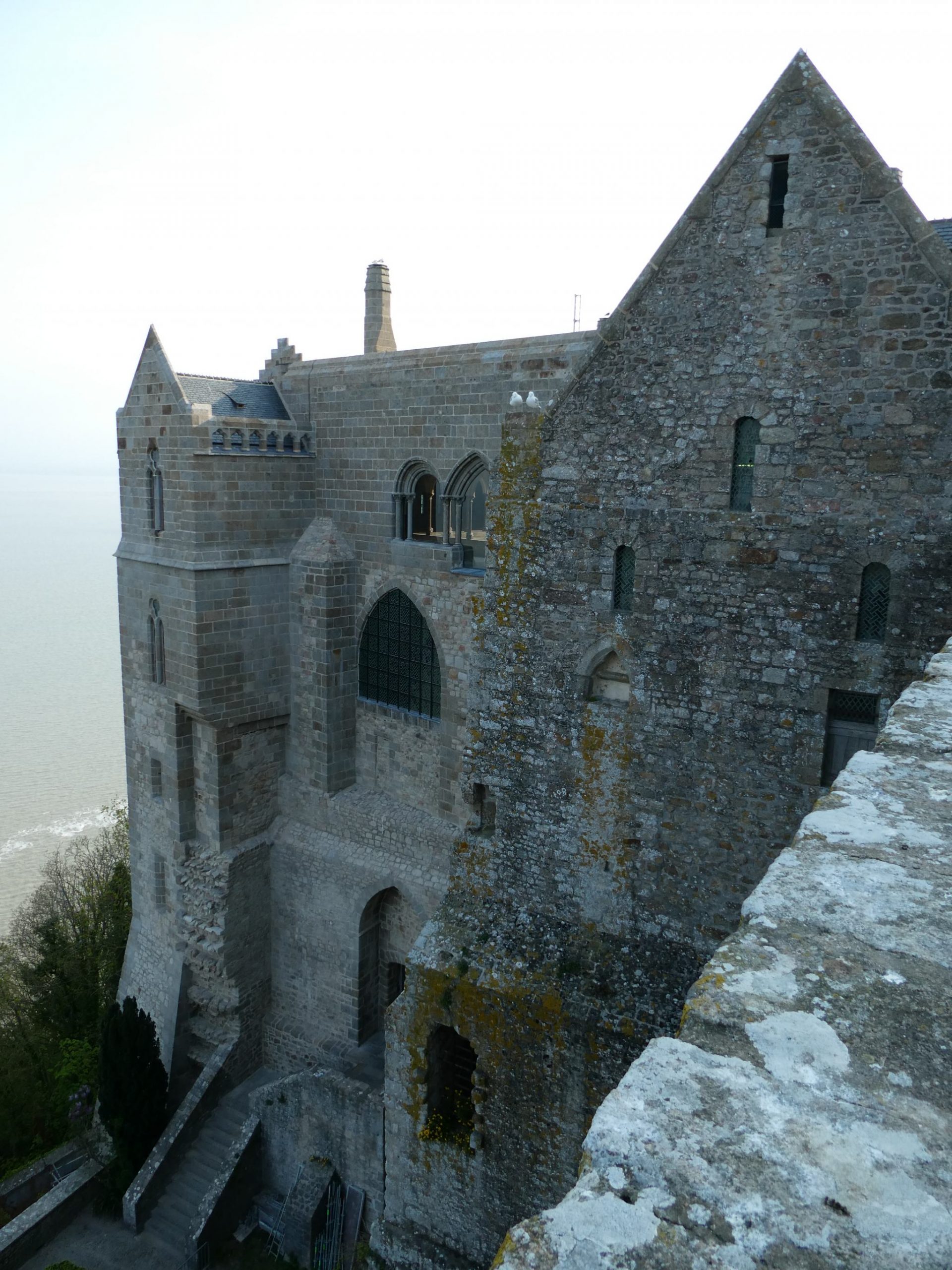 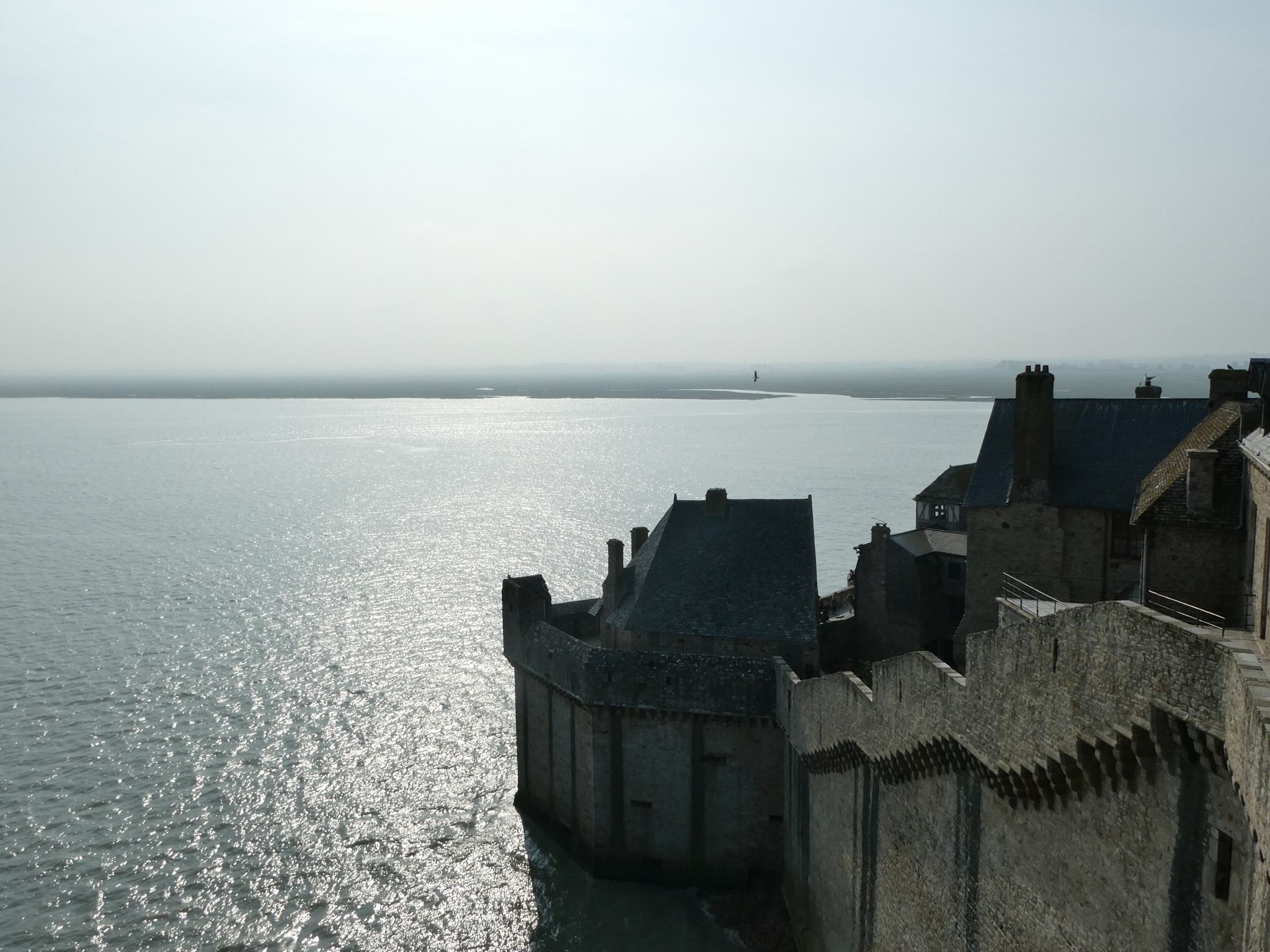 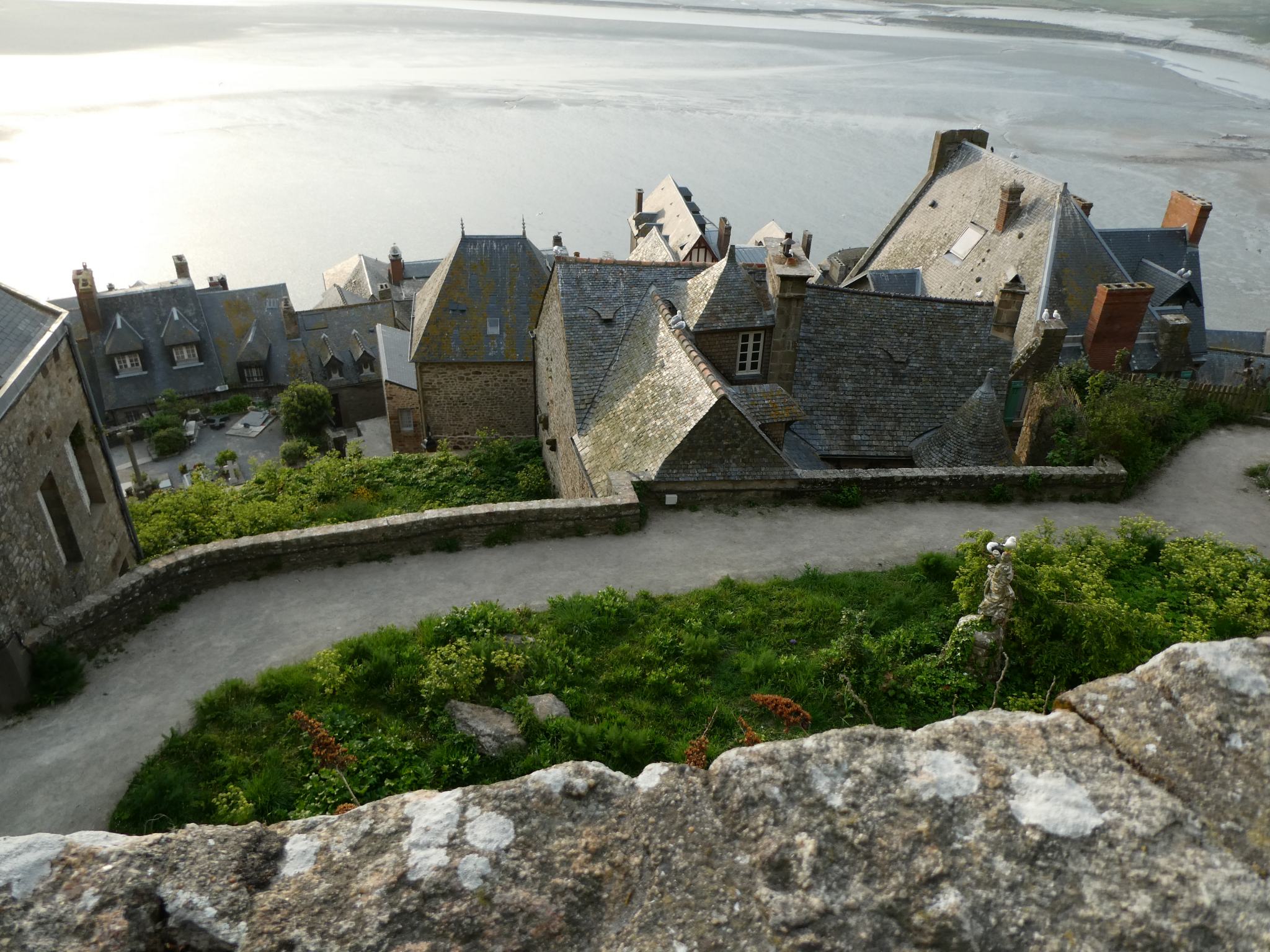 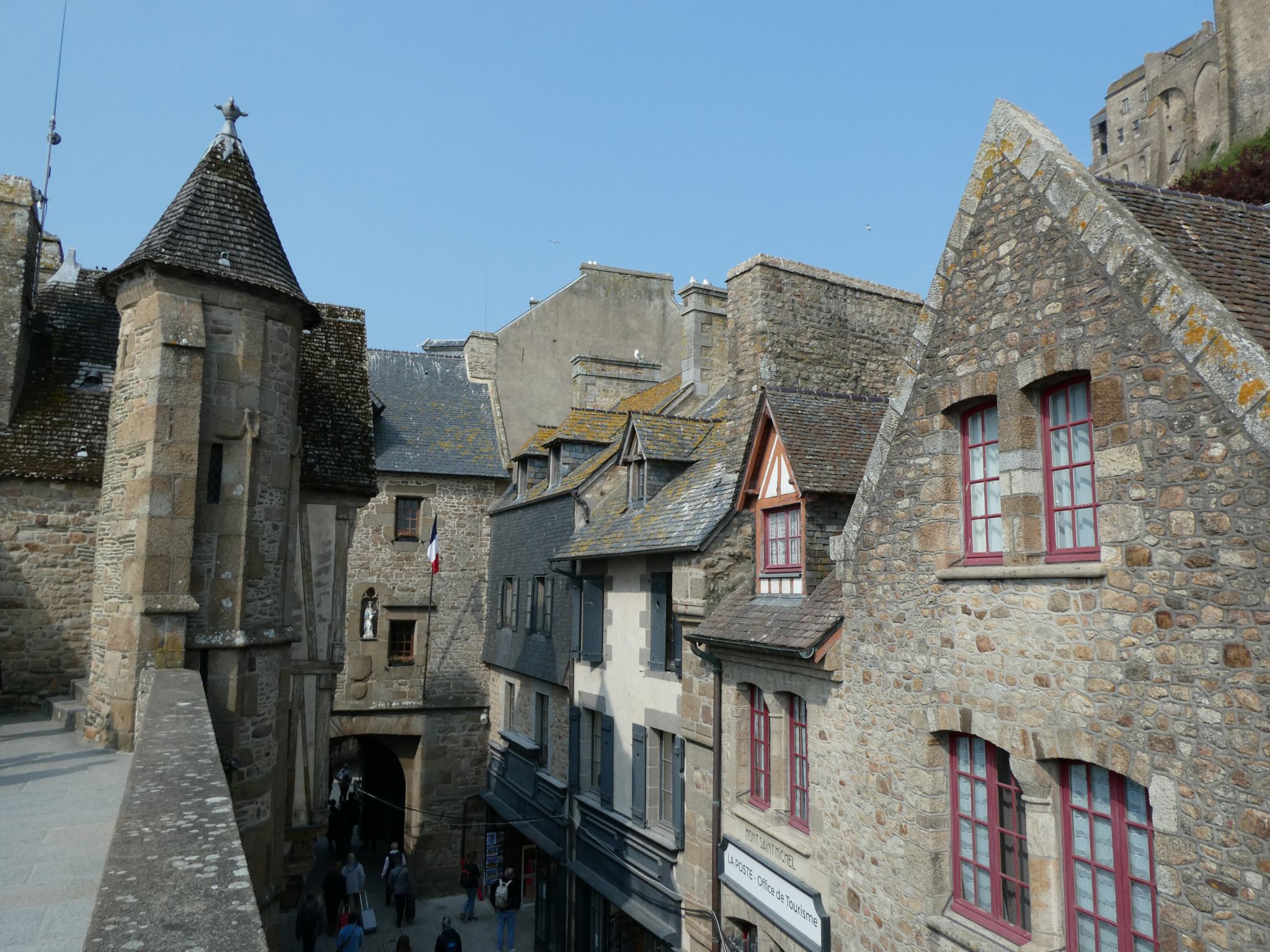 The permanent population, ie people who actually live and sleep here, is 26.  The Mont ‘belongs’ to just a few families, who make their money from tourism.  50 shops plus a few small hotels cater to 3 million visitors who bring in $US63 million annually.  Now that’s definitely a case of being born in the right place at the right time.

By the time we left, the streets were getting busy.  We wandered for a while, had an early lunch.  As we circled back around the ramparts we could see across to the causeway.  The tourist masses were flooding across. 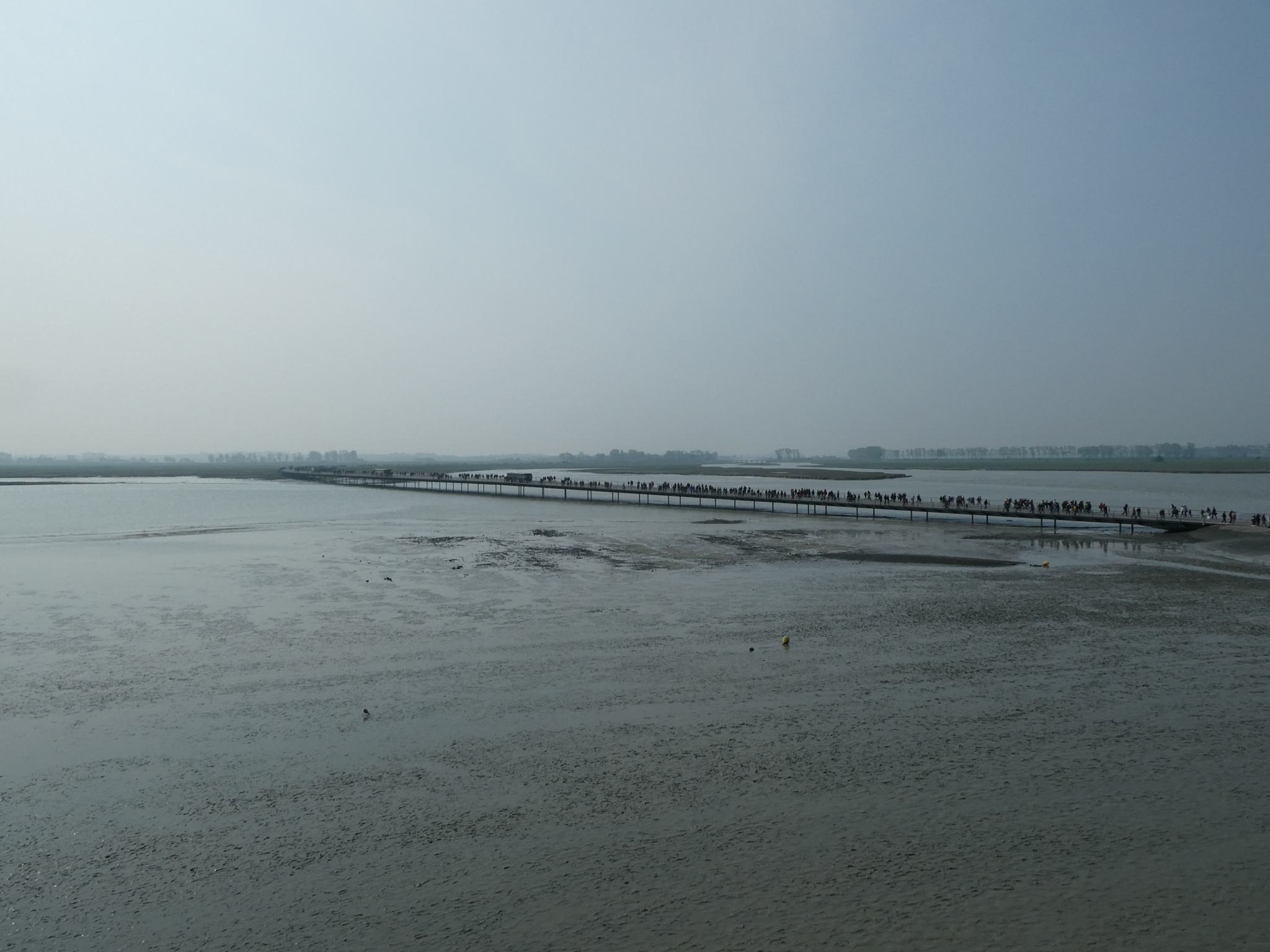 We wondered why so many had decided to walk.  When we got back to the other side, we knew why.  The line for the shuttle buses stretched forever.

From the mainland, one last look from across the fields.  The haze of earlier in the morning had lifted.  It is a truly stunning sight. 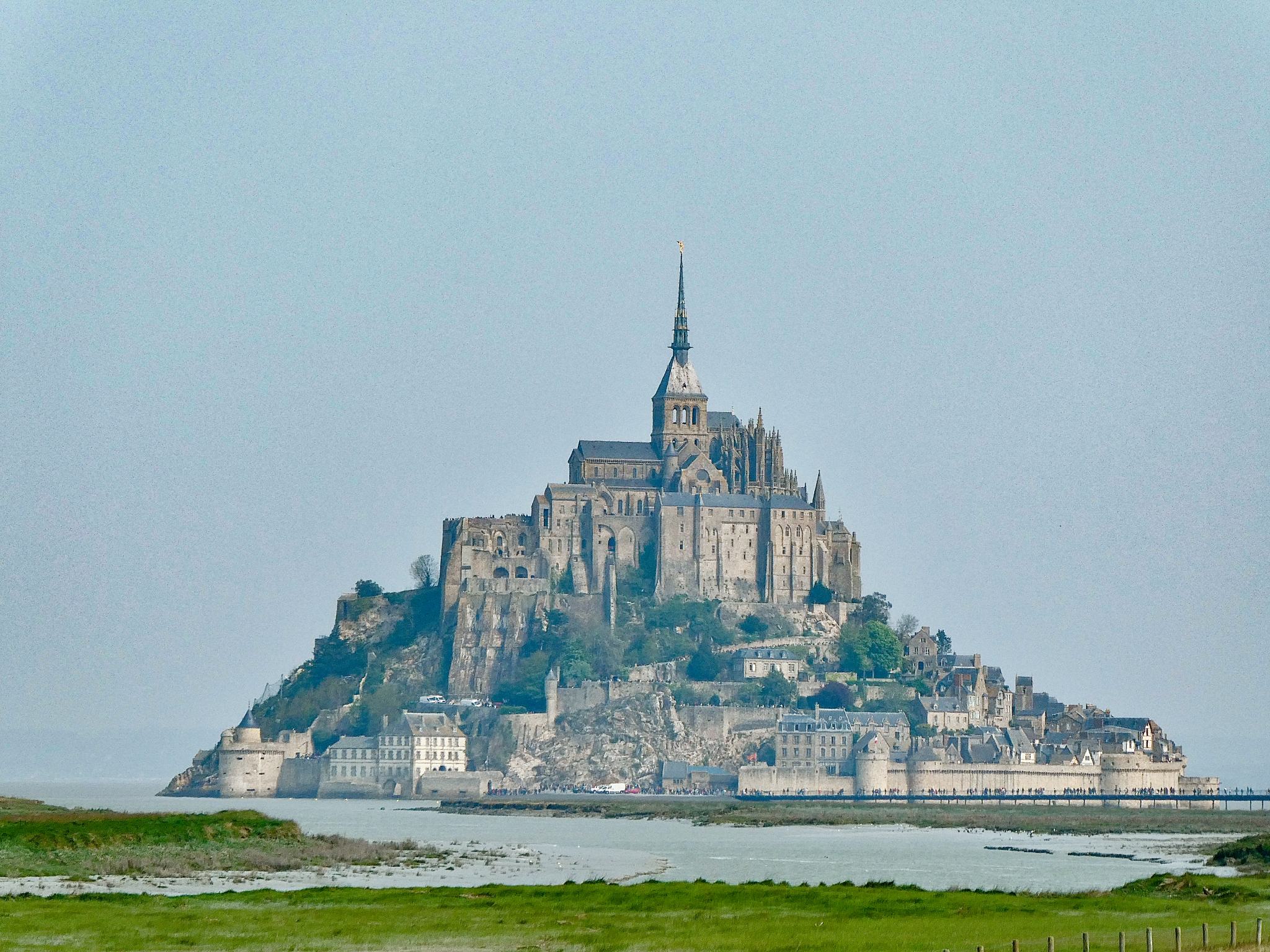