After spending April and May in France, we returned briefly to Australia, then together with Julie’s mother we headed to the US to visit Julie’s brother and his family, a trip almost exactly 2 years delayed due to Covid.  She’s now home and they are off on their own summer holidays.  And we are back to our pre-Covid nomadic lifestyle.  First stop, the national parks of northern USA.

“Of all the fire mountains which, like beacons, once blazed along the Pacific Coast, Mount Rainier is the noblest”.  John Muir.

When the ‘Father of the National Parks’ of the USA says this, you know the place is bound to be something spectacular.  And it is.

At just under 4,400 metres high, Mount Rainier is the highest mountain in Washington and the tallest volcano in the Cascade Mountain Range.  With 26 major glaciers and 93 square kms of permanent snowfield it’s also the most glaciated peak in the lower 48 states of the USA.  At its summit are two volcanic craters, each more than 300 metres wide.

The Native American name for the mountain is Tahoma meaning ‘mother of waters’ or ‘snow covered mountain’ depending on which linguist you accept.

In seismological terms it is classified one of the most dangerous volcanoes in the world because its probability of eruption in the near future is ‘high’ and the huge amounts of glacial ice which would be dislodged in such an event would potentially obliterate an area occupied by 80,000 people.   Typically, around 5 earthquakes are recorded near the summit every month.  No wonder these are carefully monitored and analysed, considering it was just such an event which caused the eruption of nearby Mount Saint Helens in 1980, triggering what is still the largest landslide in recorded history.  But having said that, Mount Rainier hasn’t erupted since the 1850s.  All is quiet, for now.

Mount Rainier National Park, comprising an area of almost 600 square kms, was established in 1899 as the USA’s fifth national park.  In 1997 it was designated a National Historic Landmark.

More than a month into ‘summer’, normally all the trails would be open and summer flowers blooming.  But an exceptionally late winter this year means the snow is still solid down to around 1,200 metres elevation.

On our first day we drove up to Paradise, one of the two high elevation visitor centres, located on the south side of the park.  It was a brilliant day and Mount Rainier looked stunning in the sunshine. 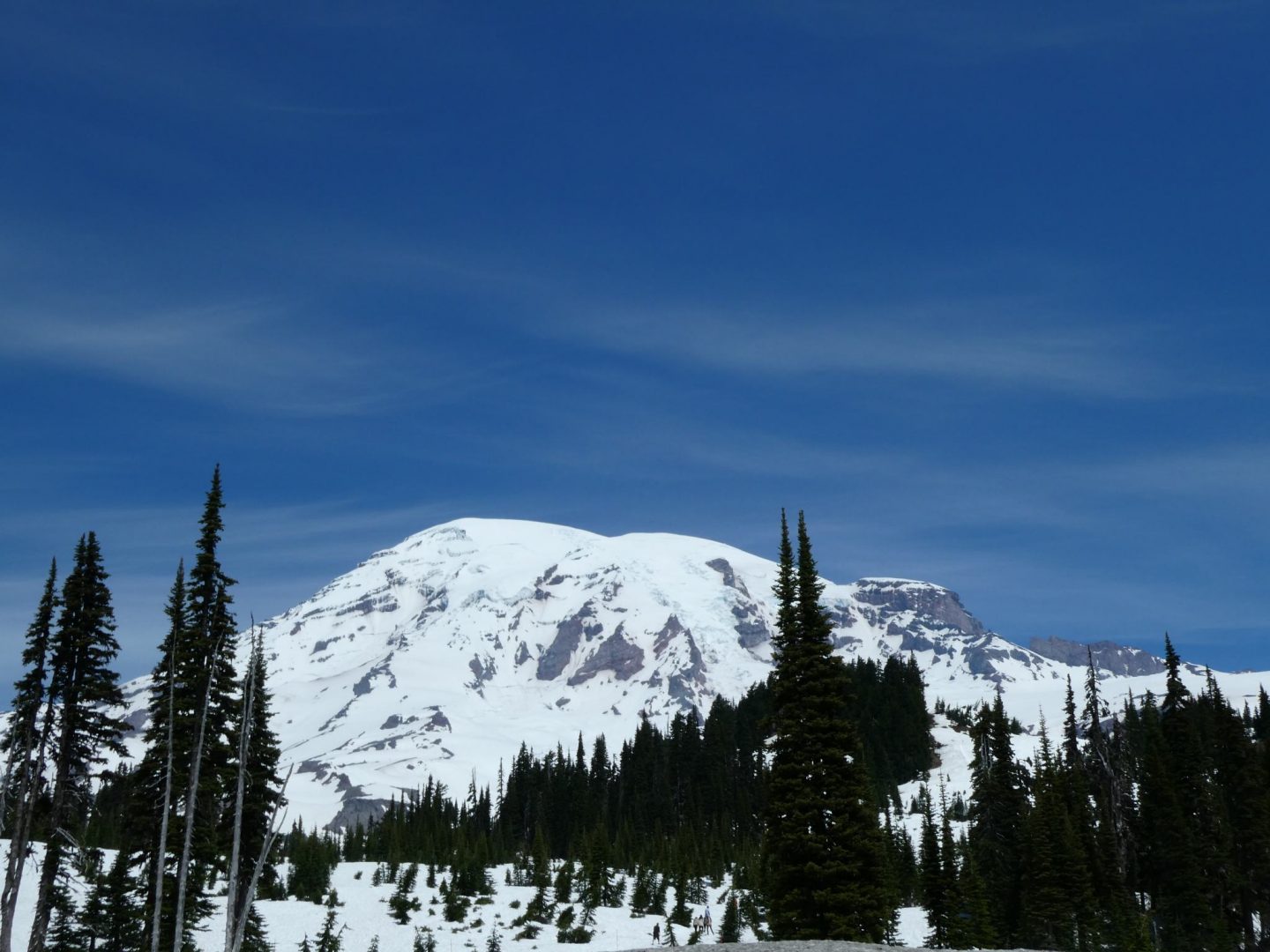 We saw a couple of people heading up the slopes on skis.  A few dozen others were throwing snow balls near the car park.  But all of the hiking trails leading off from the visitor centre were hidden under a thick blanket of snow.  We’d intended hiking the Lakes Trail and we found the trail head but no trail. 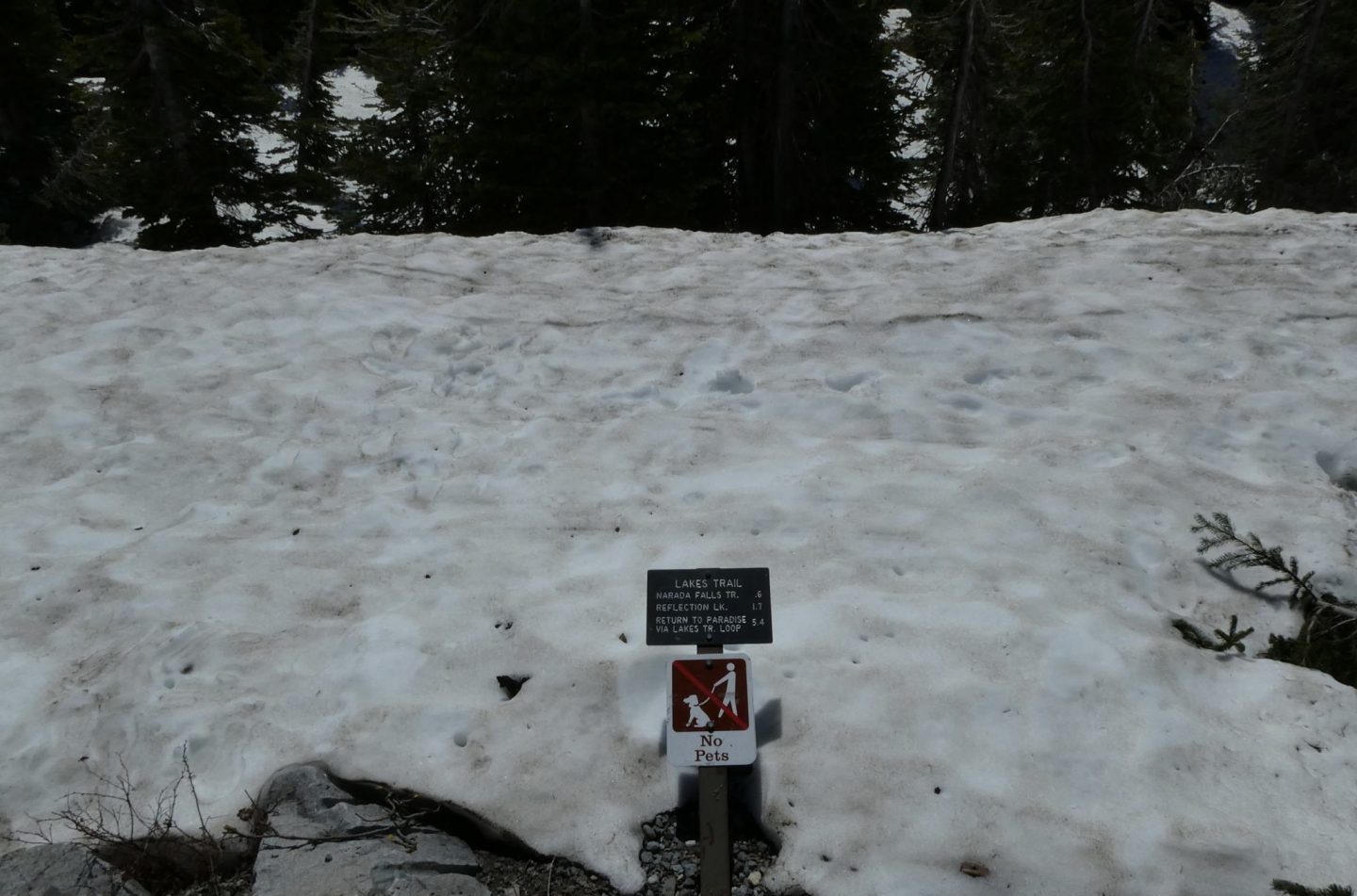 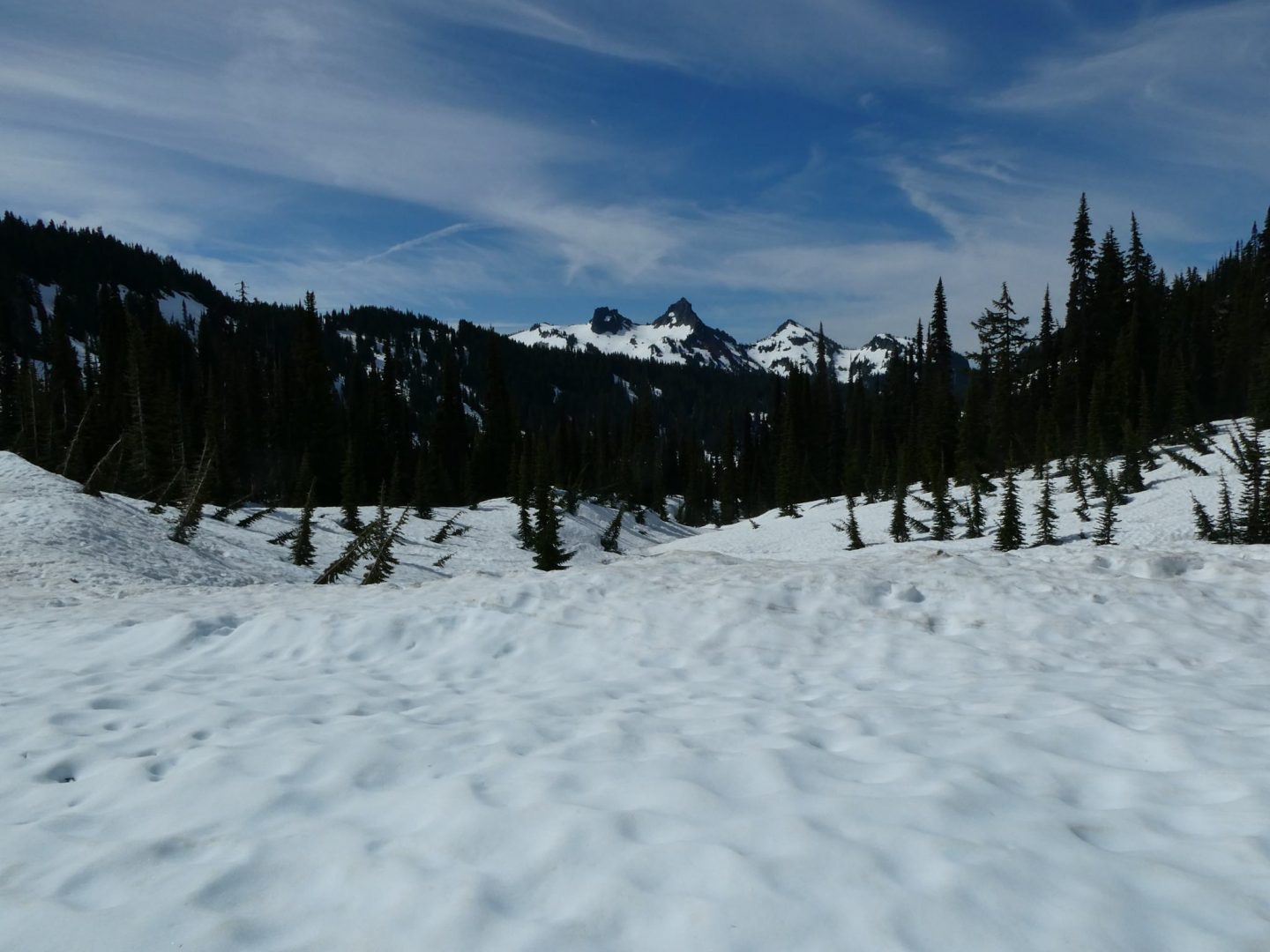 The road from the visitor centre looping back down to the valley was closed to traffic but had been cleared of snow, so instead of a trail hike we walked down the road. 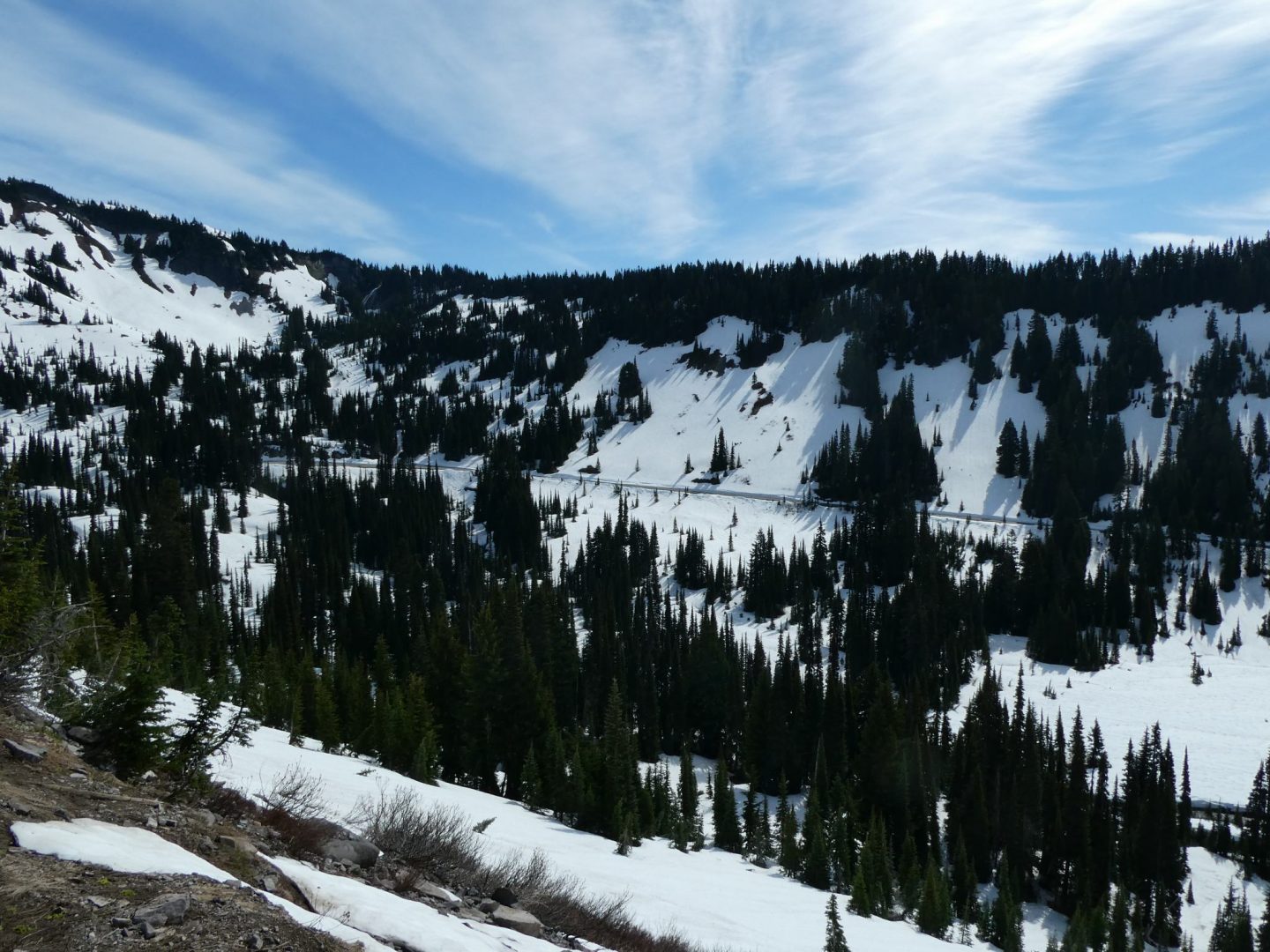 With no traffic and, inexplicably, no other walkers, it was a surprisingly enjoyable way to see the panorama of the Cascade Mountain Range. 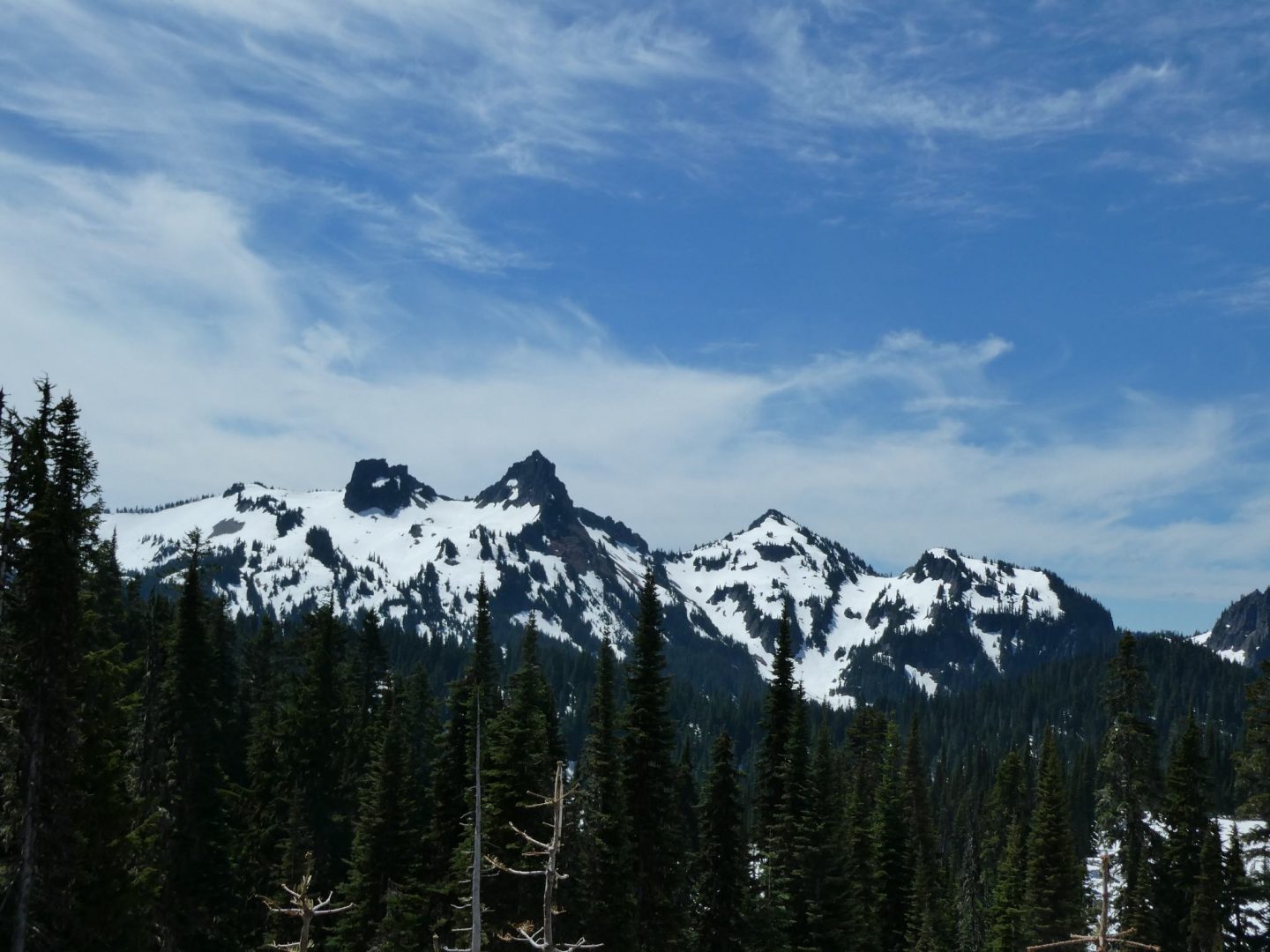 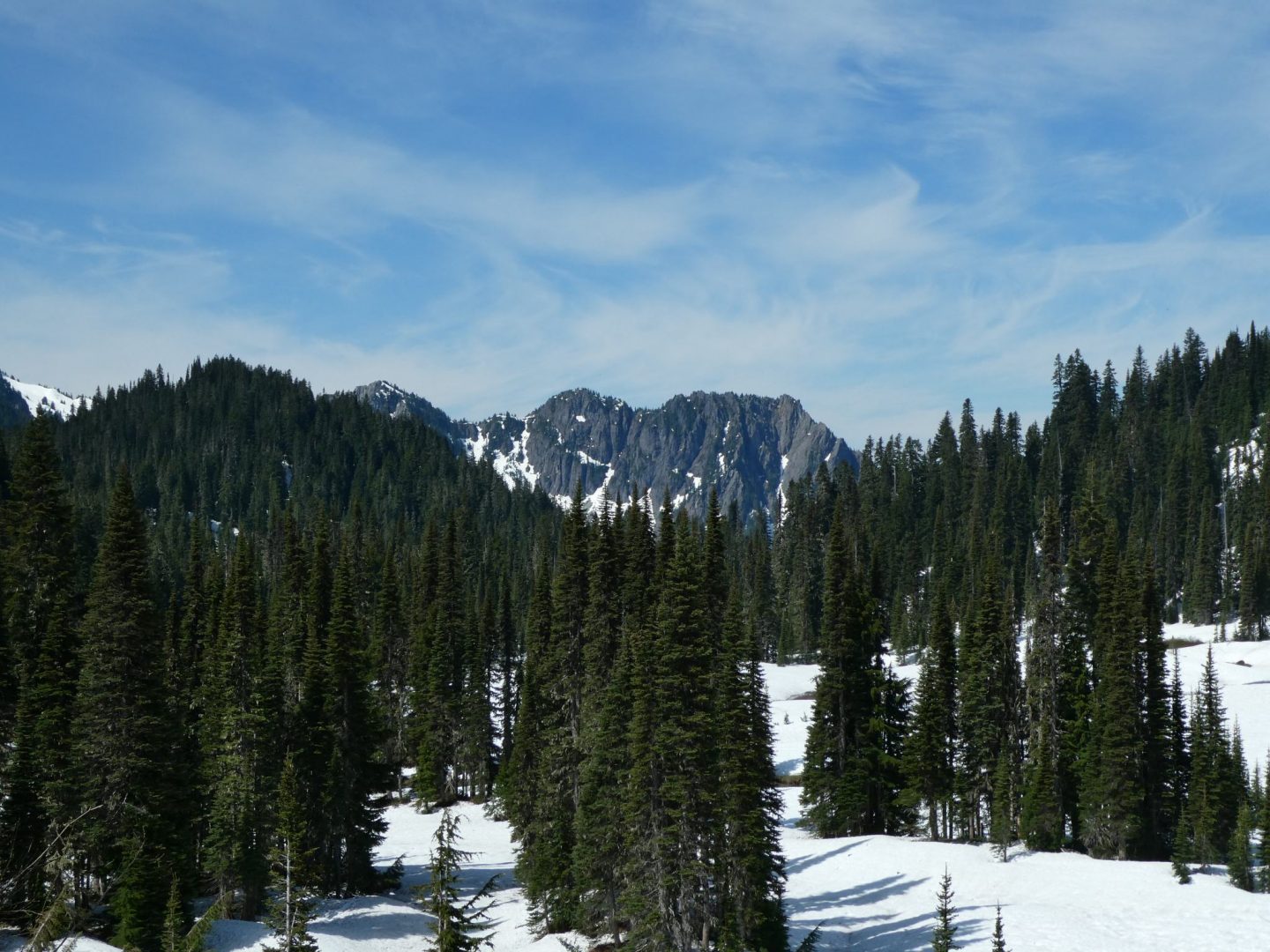 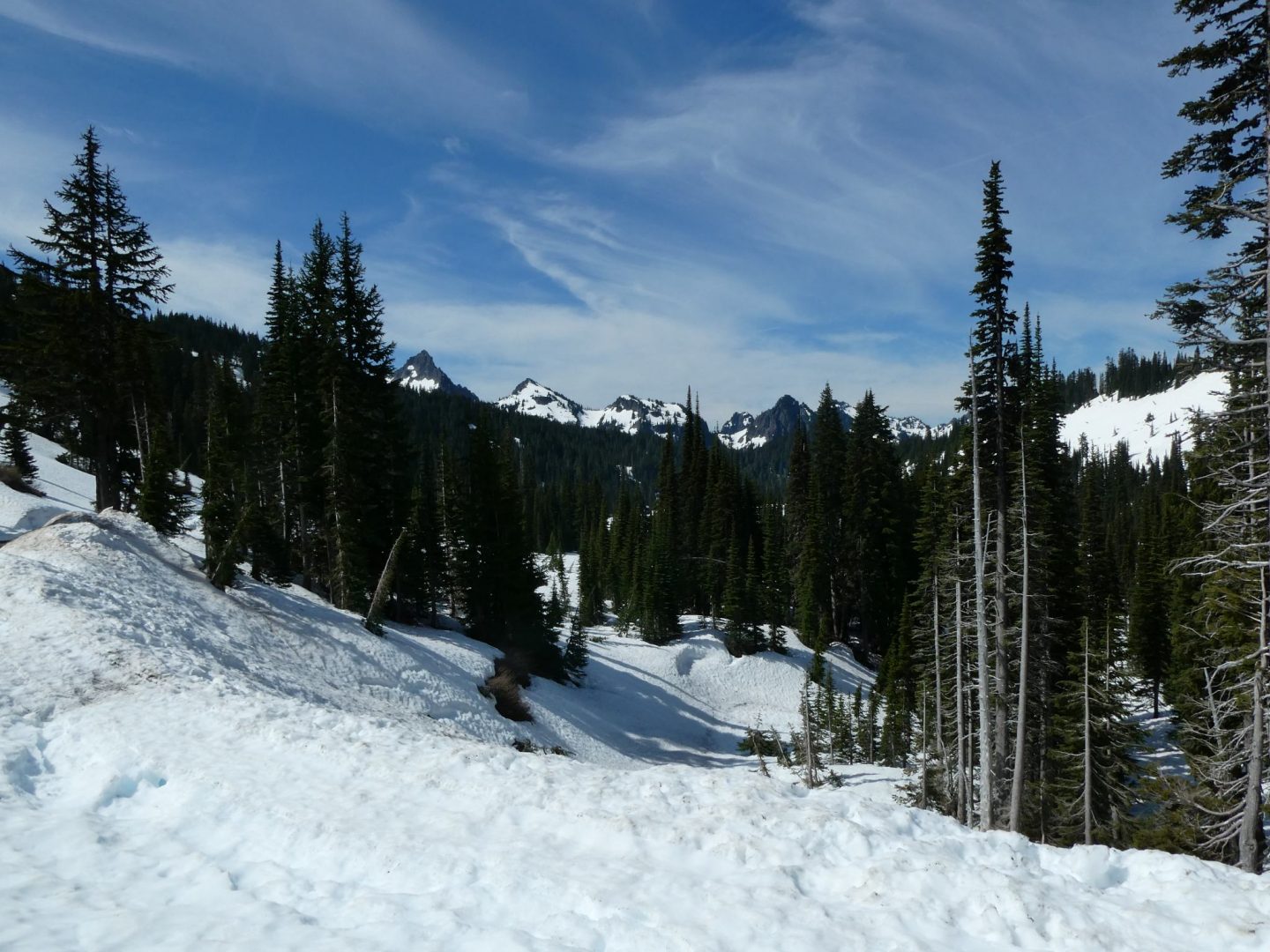 We walked down to the junction with the valley road, where the closure finished, and then back up again, this time with views to Mount Rainier. 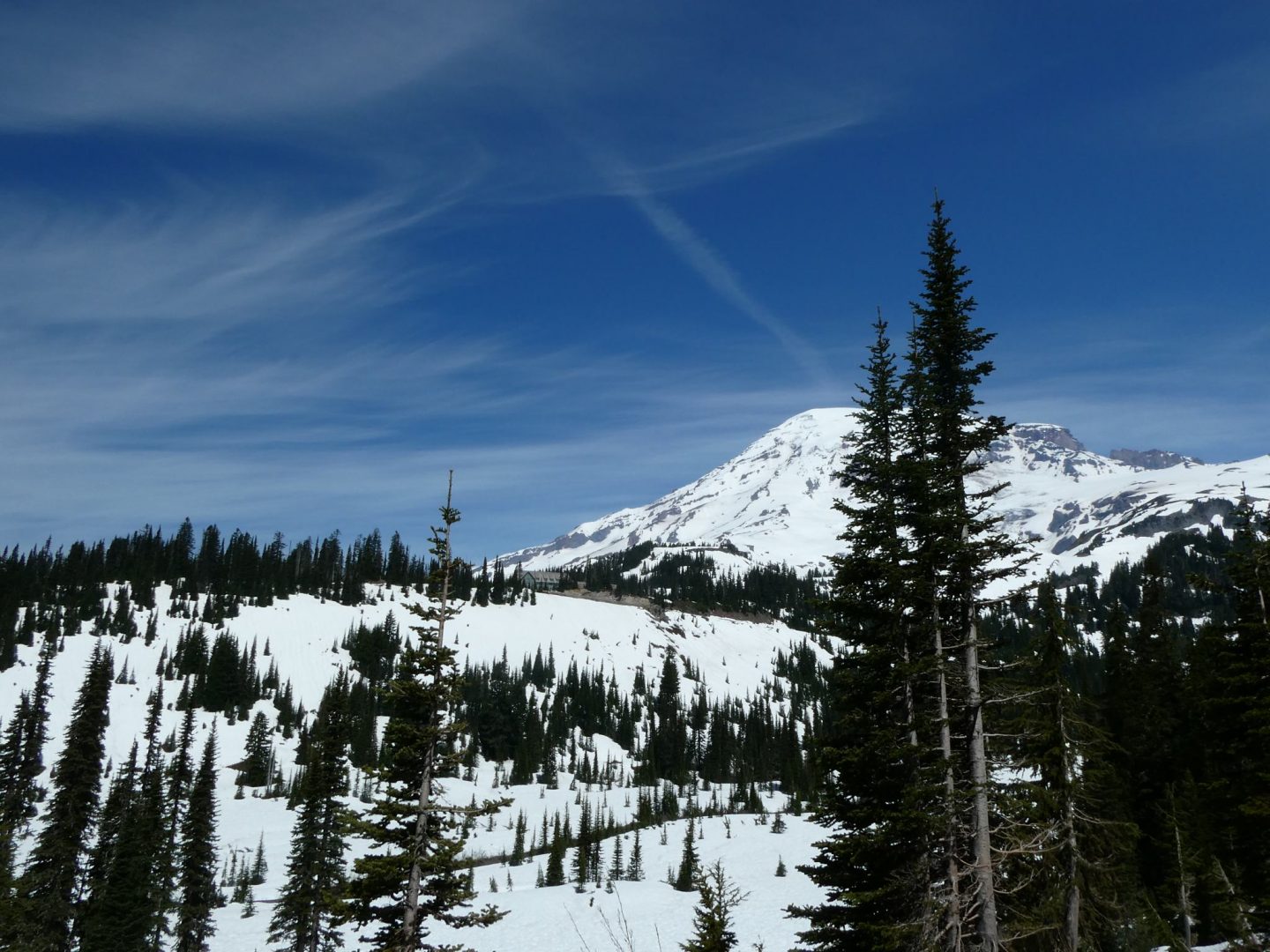 Remember Punxsutawney Phil, made famous in the movie Groundhog Day? Well, he may have emerged from his burrow in Pennsylvania months ago, but here his close relations the marmots are still feeling the cold.  We saw this one sunning him/herself high up in a tree. 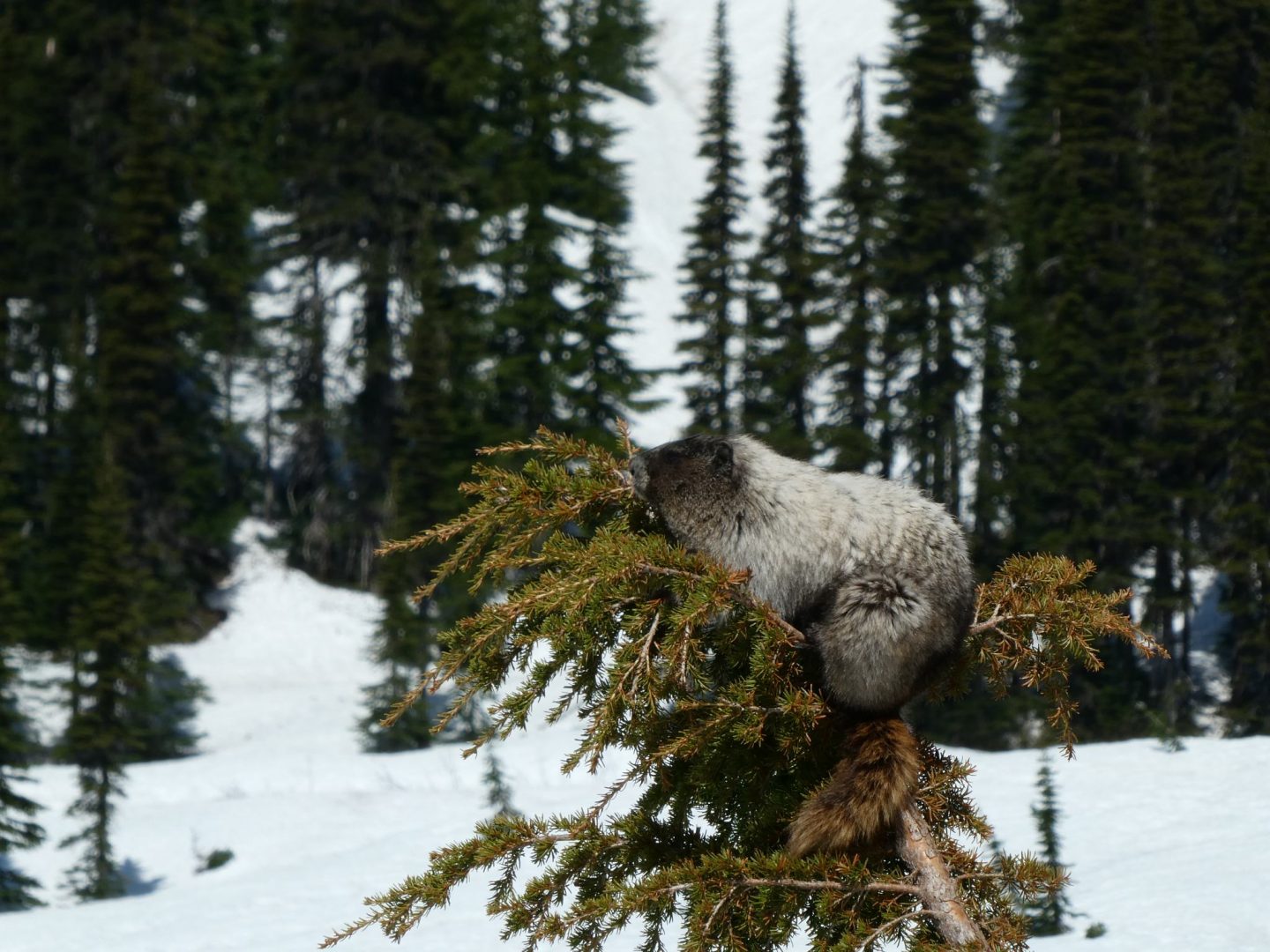 And others darting in and out of their warm(ish) burrows under the snow. 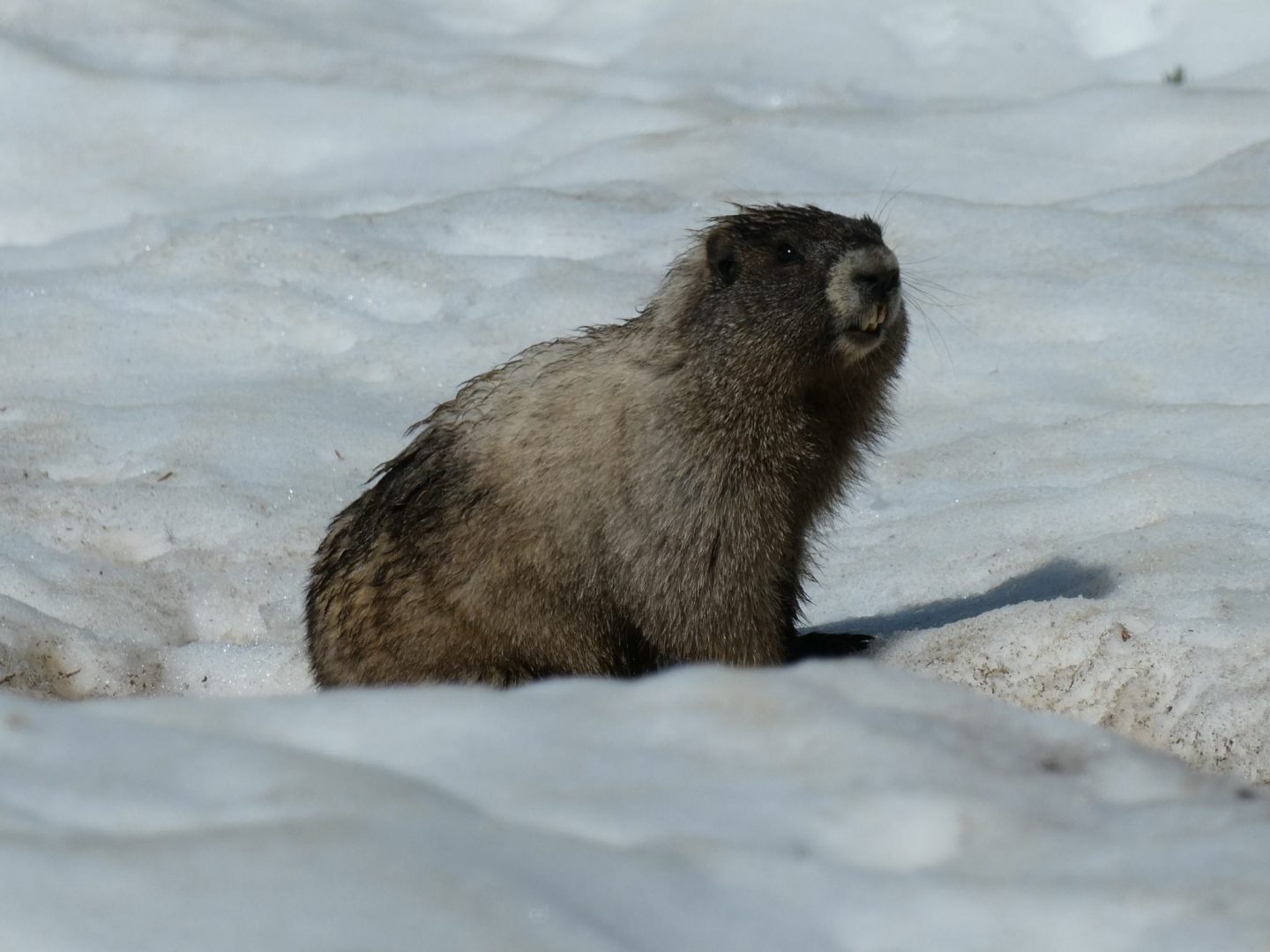 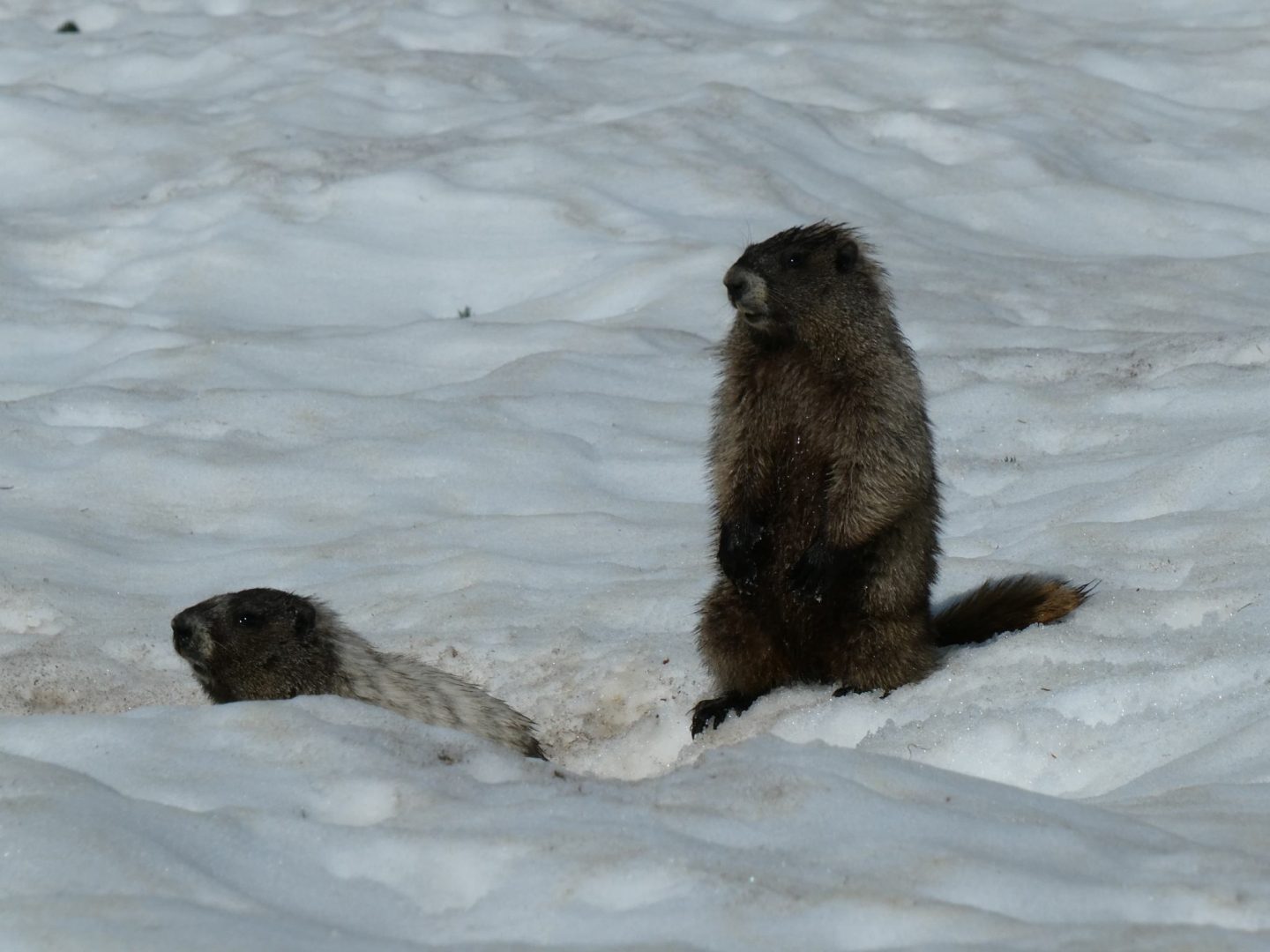 The trail would have taken us down to Reflections Lake and luckily the road around to the lake was open.  In the summer sunshine it perfectly reflects Mount Rainier.  For now it still has a thin covering of ice, with just the beginnings of the famous reflection emerging. 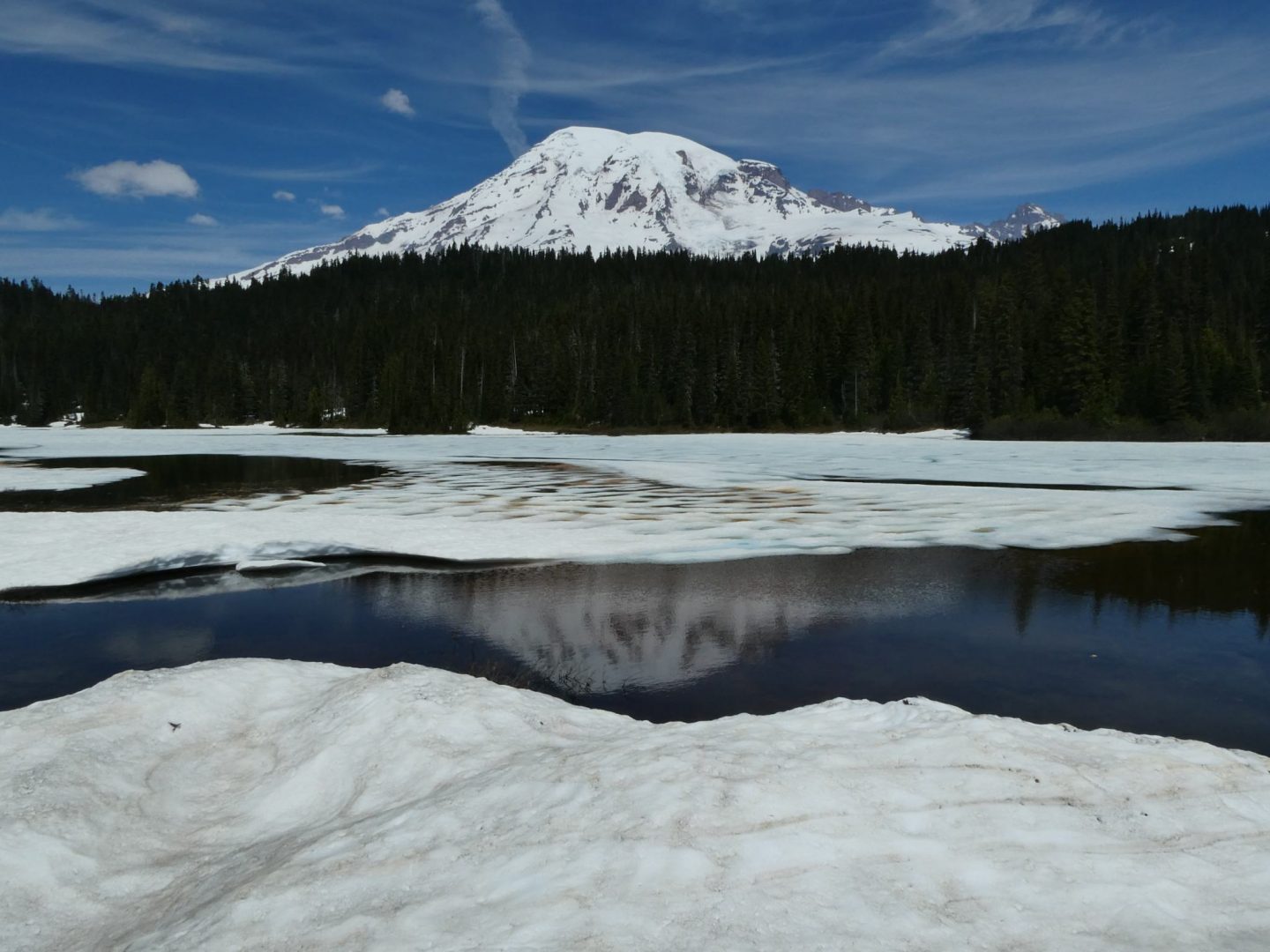 We headed around to one of the lower altitude walks.  Pretty Narada Falls almost always has a rainbow in the spray near its base on a sunny day. 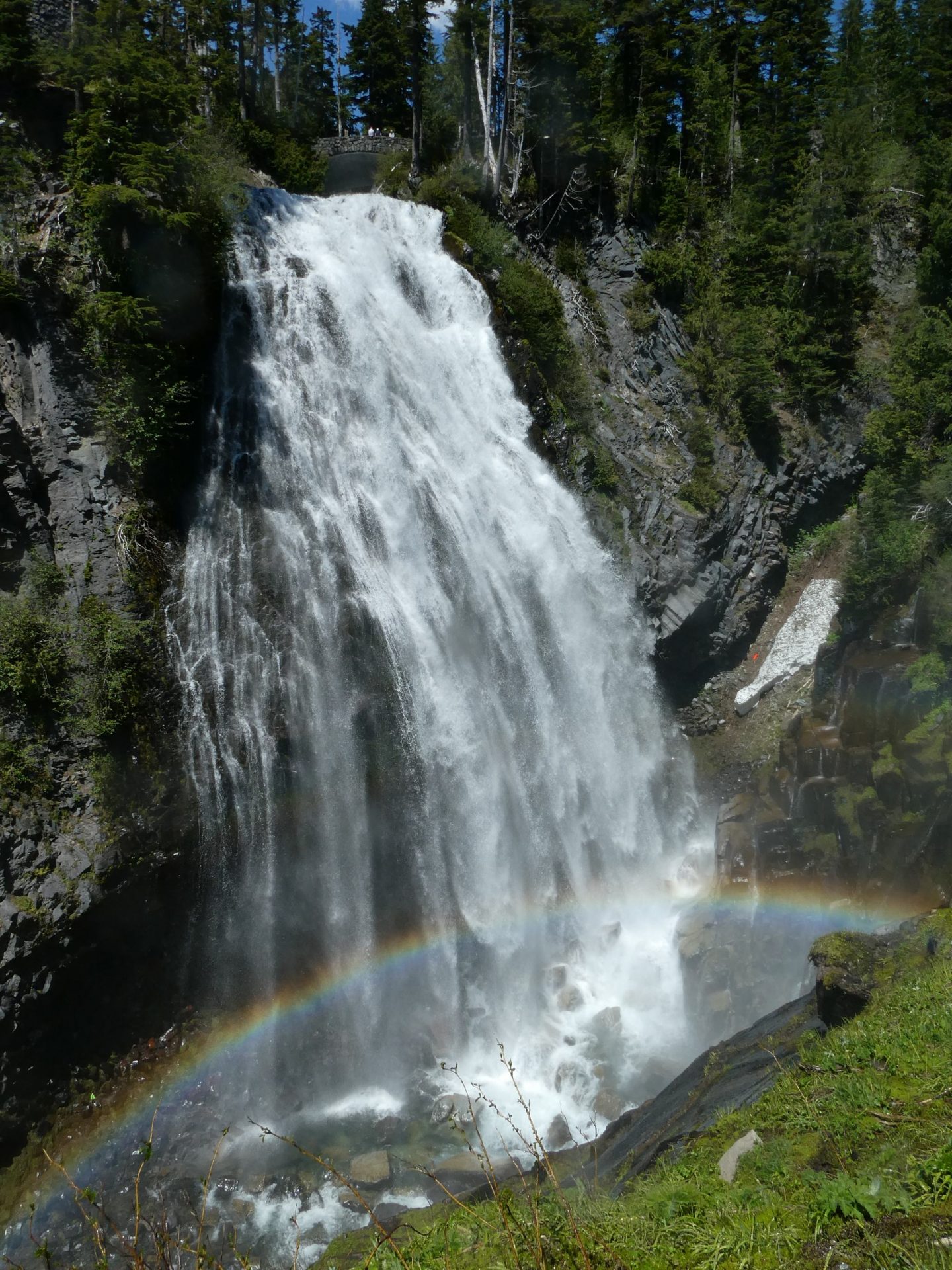 From a car park just above the falls a path leads down and along the creek valley.  We hiked for an hour or so before snow blocked the trail and we headed back.

Time for a beer at the Bucksnort Pub in the tiny town of Morton where a sign states “Dress Code: four tooth minimum”.

On day 2 we headed to the Kautz Creek Trail.  The track leads up through fir forest criss-crossing a pretty stream along the way. 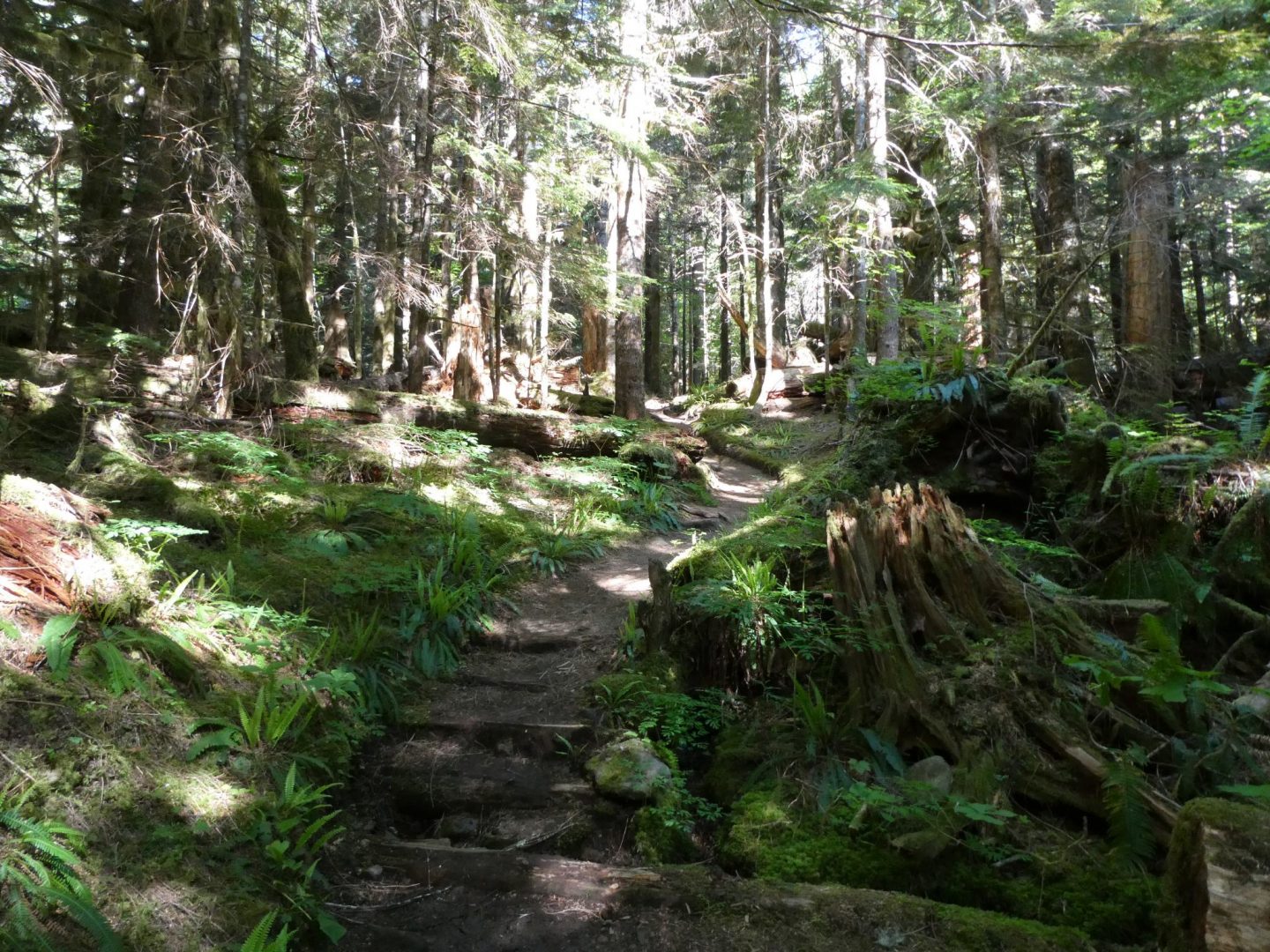 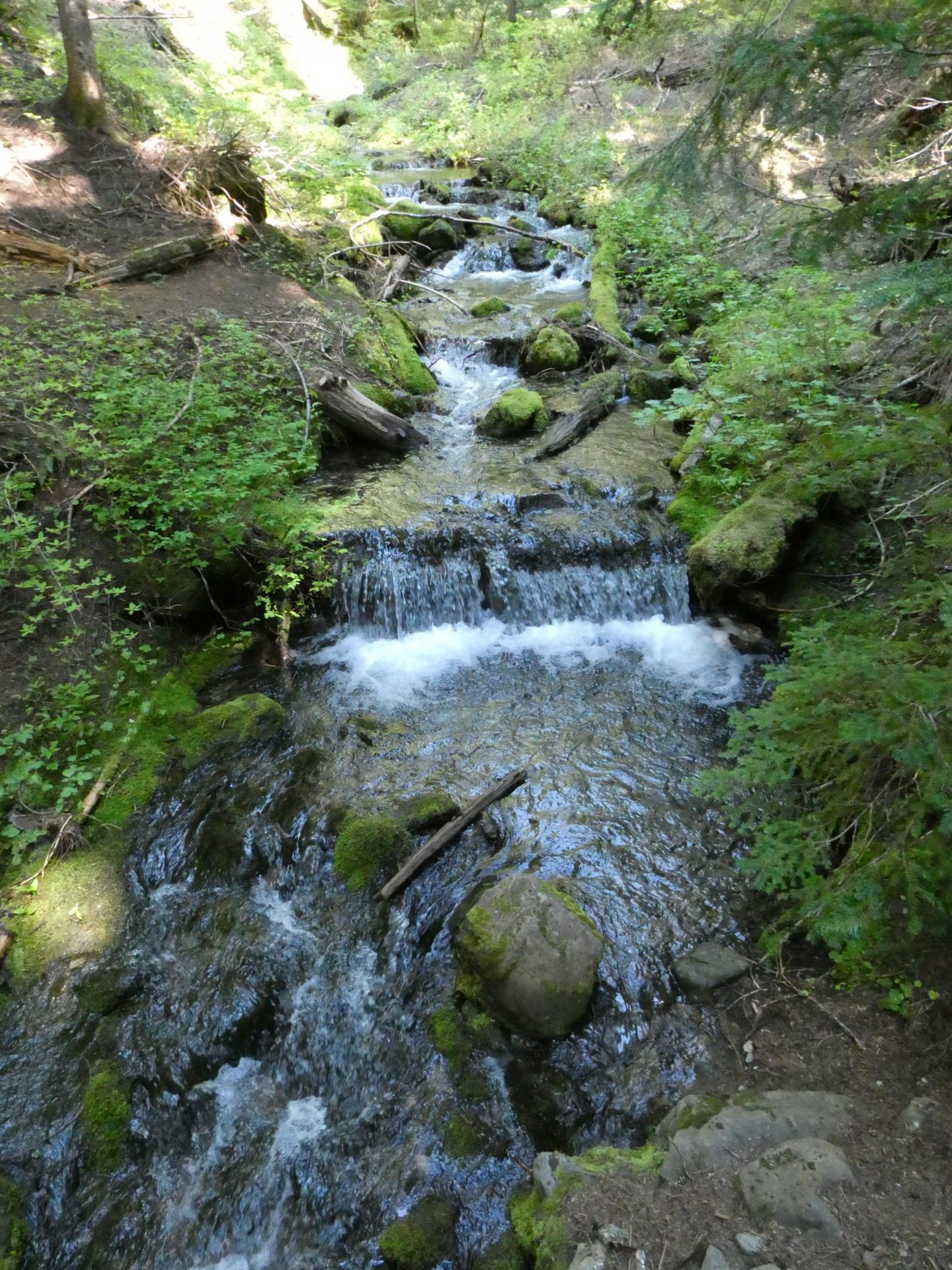 The trail climbs up and up for about 9km eventually reaching Indian Henry’s Hunting Grounds at over 1,600 metres elevation.  This vast alpine meadowland was named after a Native American guide (real name So-to-Lick) who lived at the base of Mount Rainer in the 1880s and guided early pioneers to high points in the area.  We’d been told by a ranger that we wouldn’t get all the way as the track is still blocked by snow in the higher reaches but we’d get ‘far enough to make a decent walk out of it’.

At around 1,200 metres elevation we started to encounter snow patches on the trail but they were small enough to walk around or over. 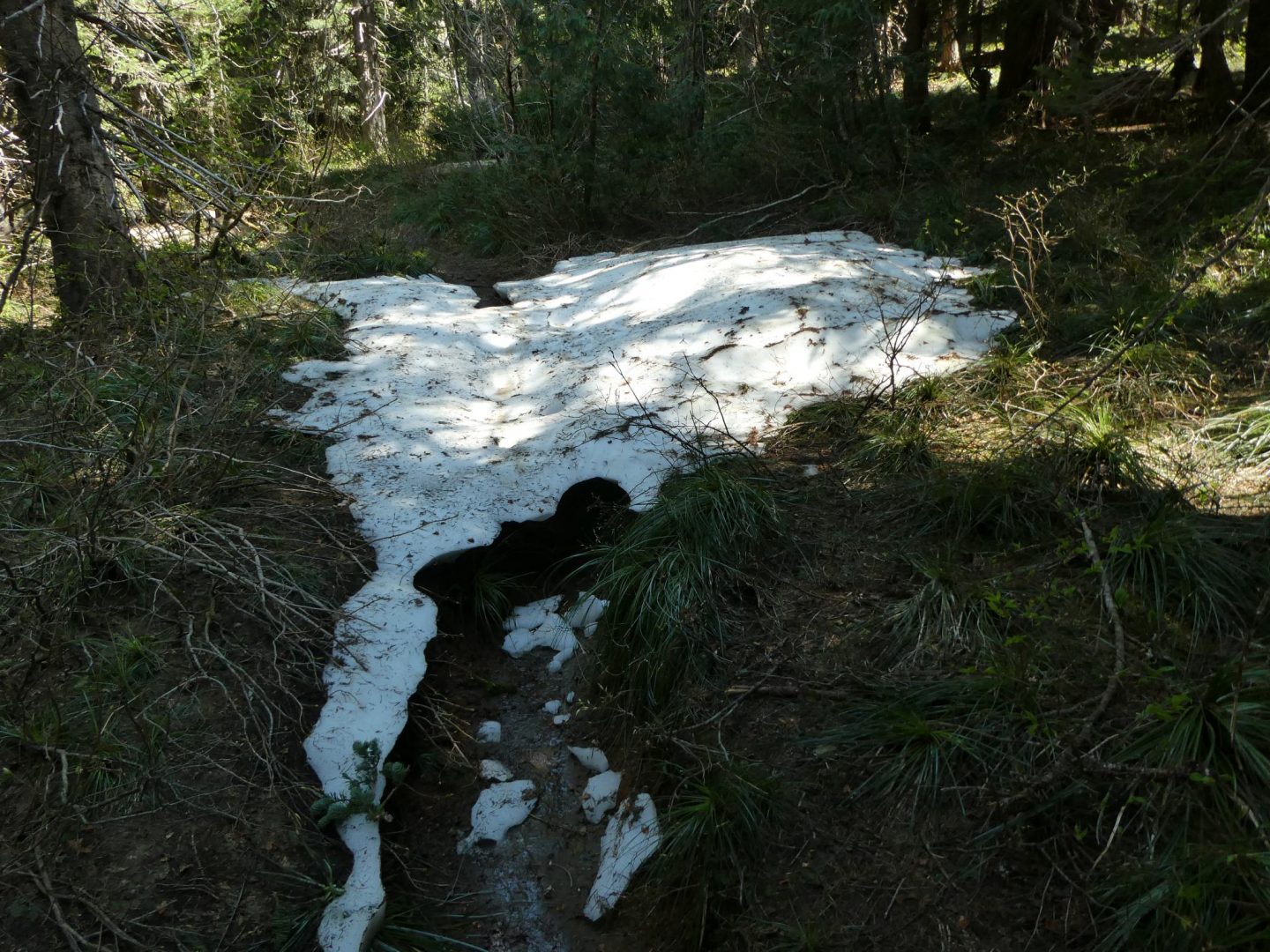 But two hours in, at about 1,500 metres elevation we had to concede defeat.  The snow was knee deep and so widespread we could not see the trail emerging anywhere ahead.  So we took that as a turn around point and headed back down.  It was disappointing not to reach the meadows, but a top class walk otherwise.

There are so many trails in the park it seemed a shame not to use the time to do another one so we headed to the Carter Falls trail.  It’s a short 5km out and back, relatively flat and starts just 14km from the park entrance, so it’s very popular.

The trail starts with crunching over the mostly dry Nisqually River Gorge, crossing the river on a wooden footbridge, with views up to Mount Rainier.  When the cloud isn’t in the way! 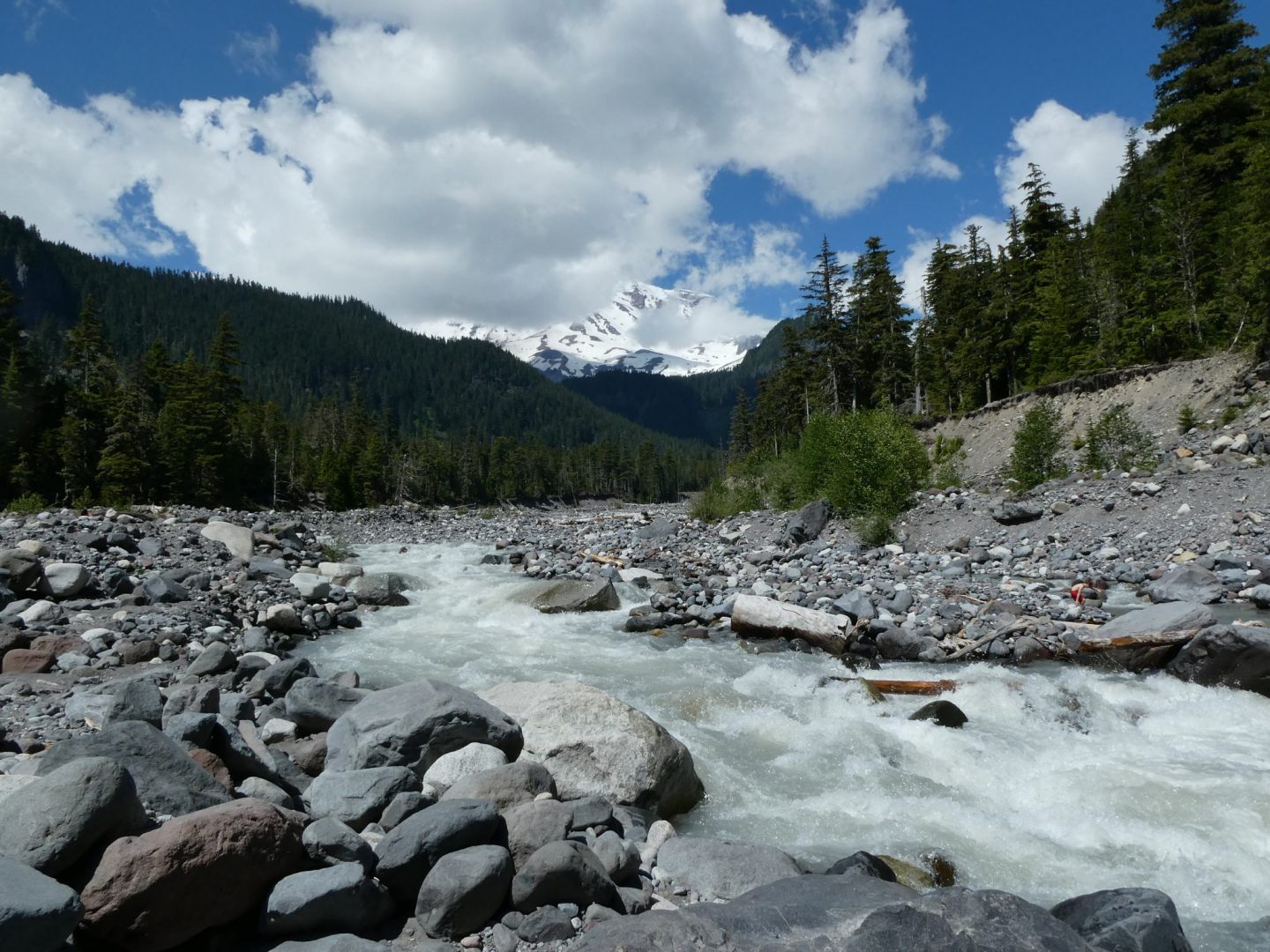 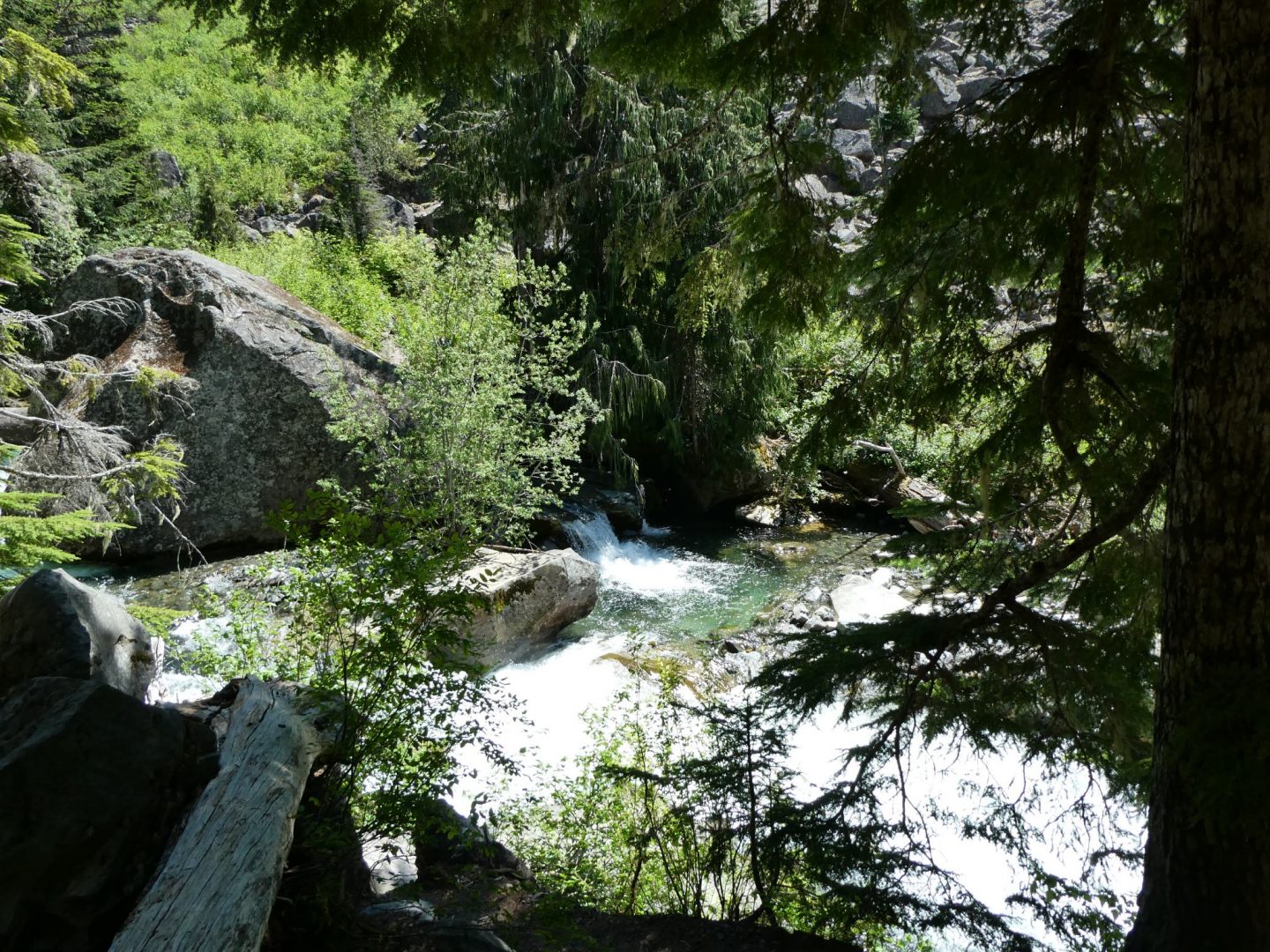 The falls aren’t exactly the tallest you’ll ever see.  Just 15 metres drop, but plenty of flow this time of year and quite pretty, although the forest around them is thick enough that there isn’t much opportunity to get an unobstructed view.  Such a nuisance when nature gets in the way of viewing nature! 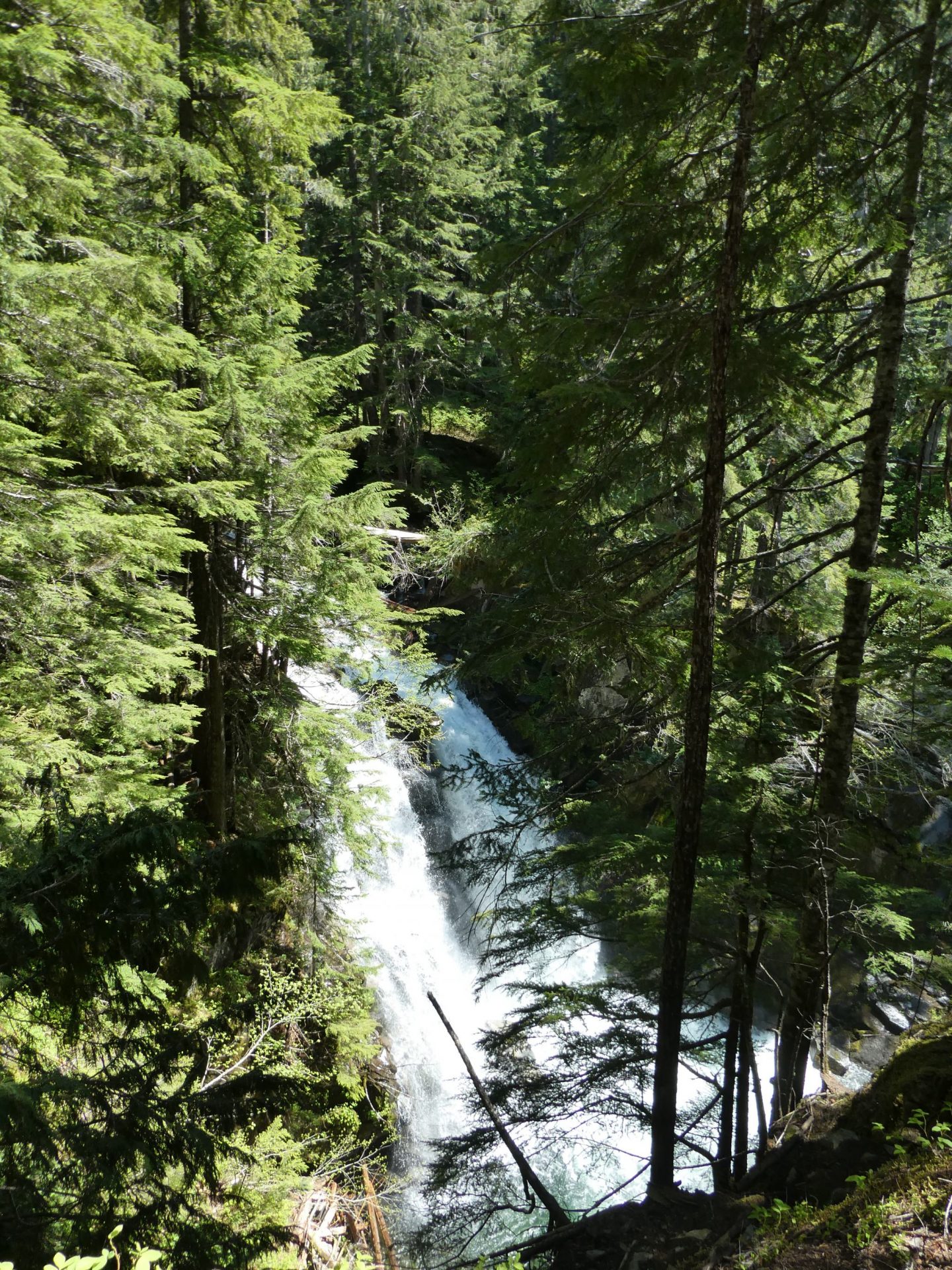 A little further along is Madcap Falls.  With a drop of just 10 metres, it’s even smaller and more of a cascade than a waterfall, but pretty nonetheless. 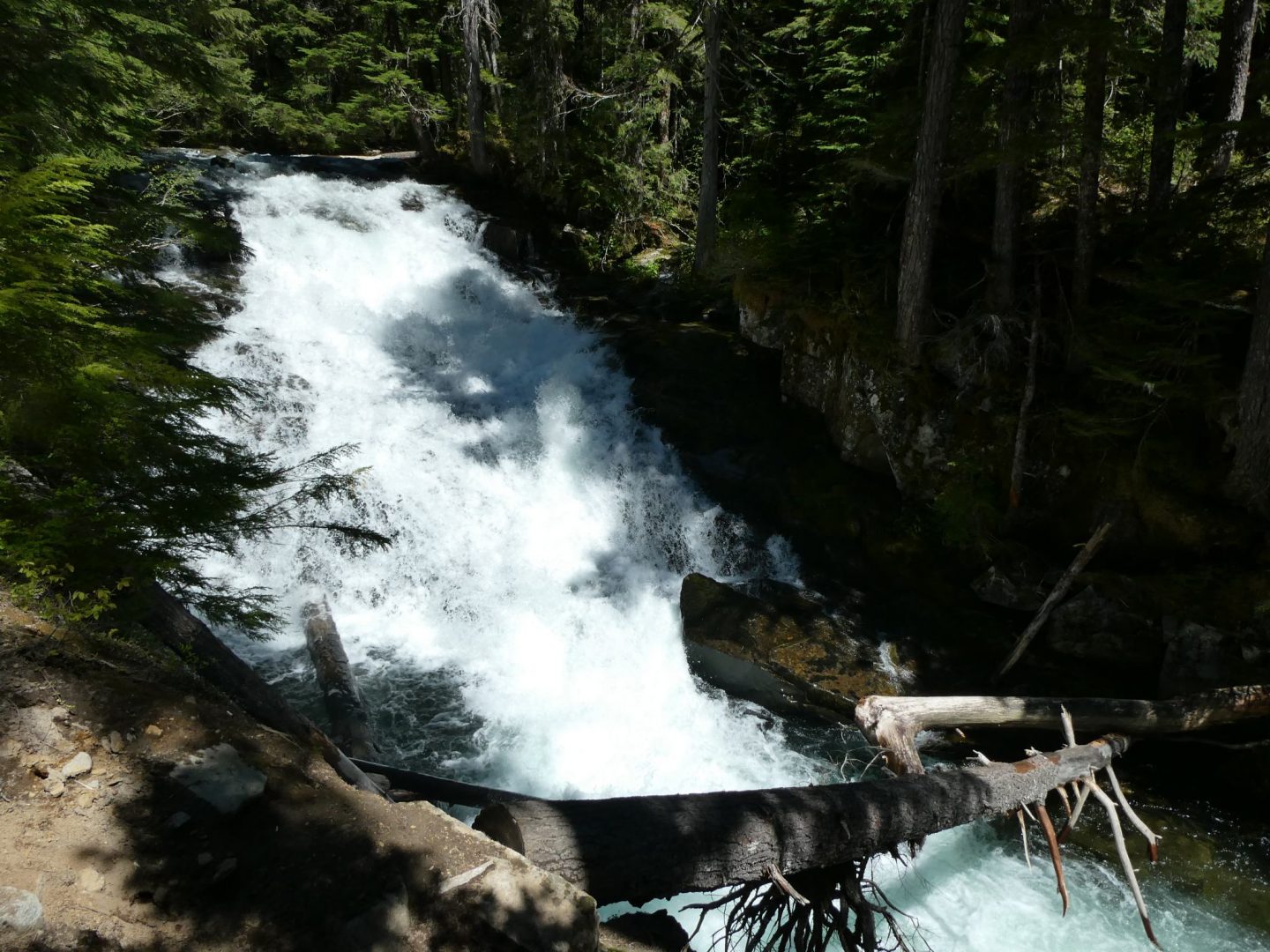 Day 3 we headed to the eastern side of the park.  The Ohanapecosh River is said to be the prettiest in the park and it certainly is gorgeous. 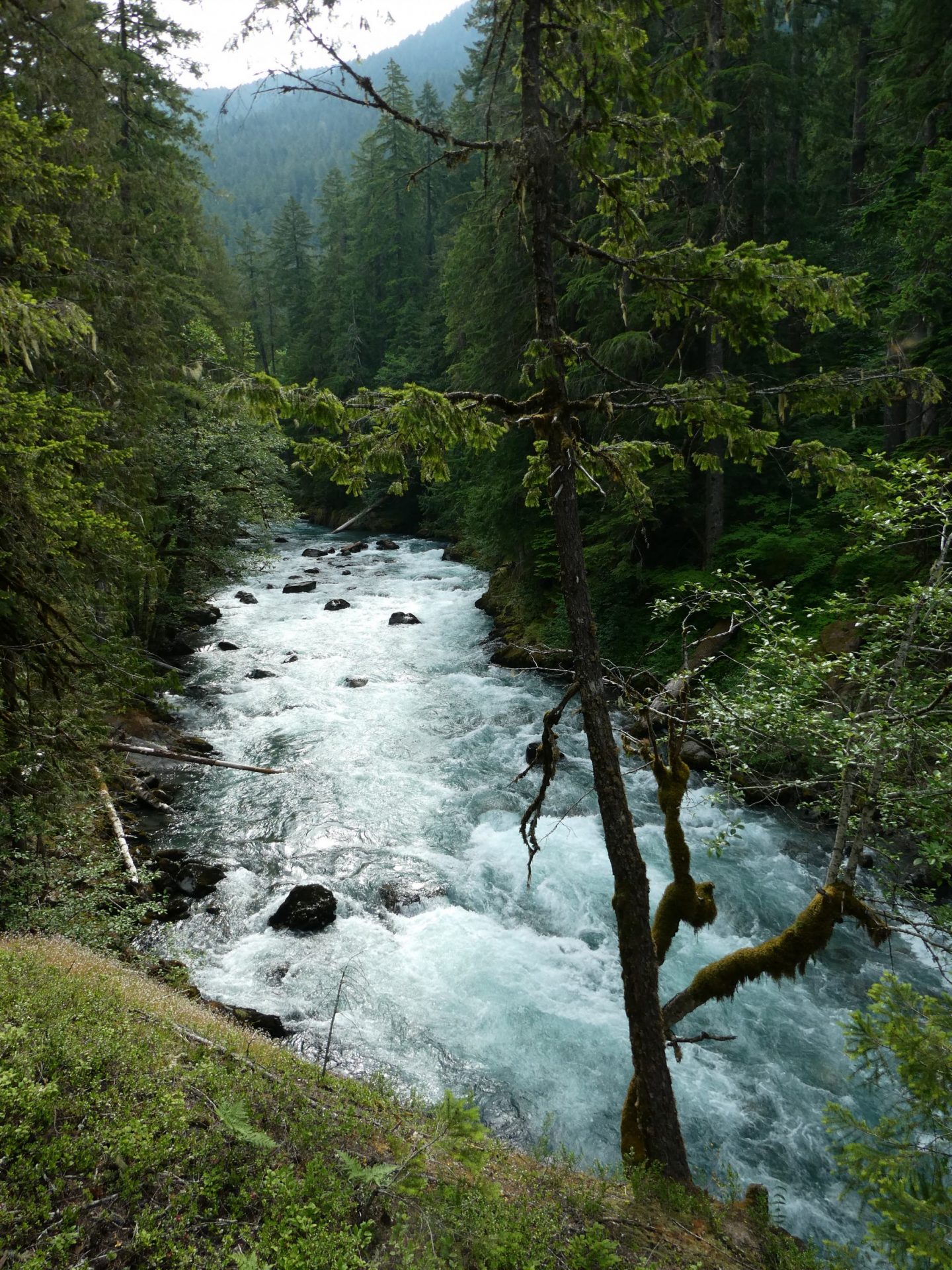 The trail is a loop walk and, proceeding anti-clockwise, the falls are reached after just under 3km.  The river is forced through a narrow canyon creating a waterfall with a multi-level drop totalling 30 metres. 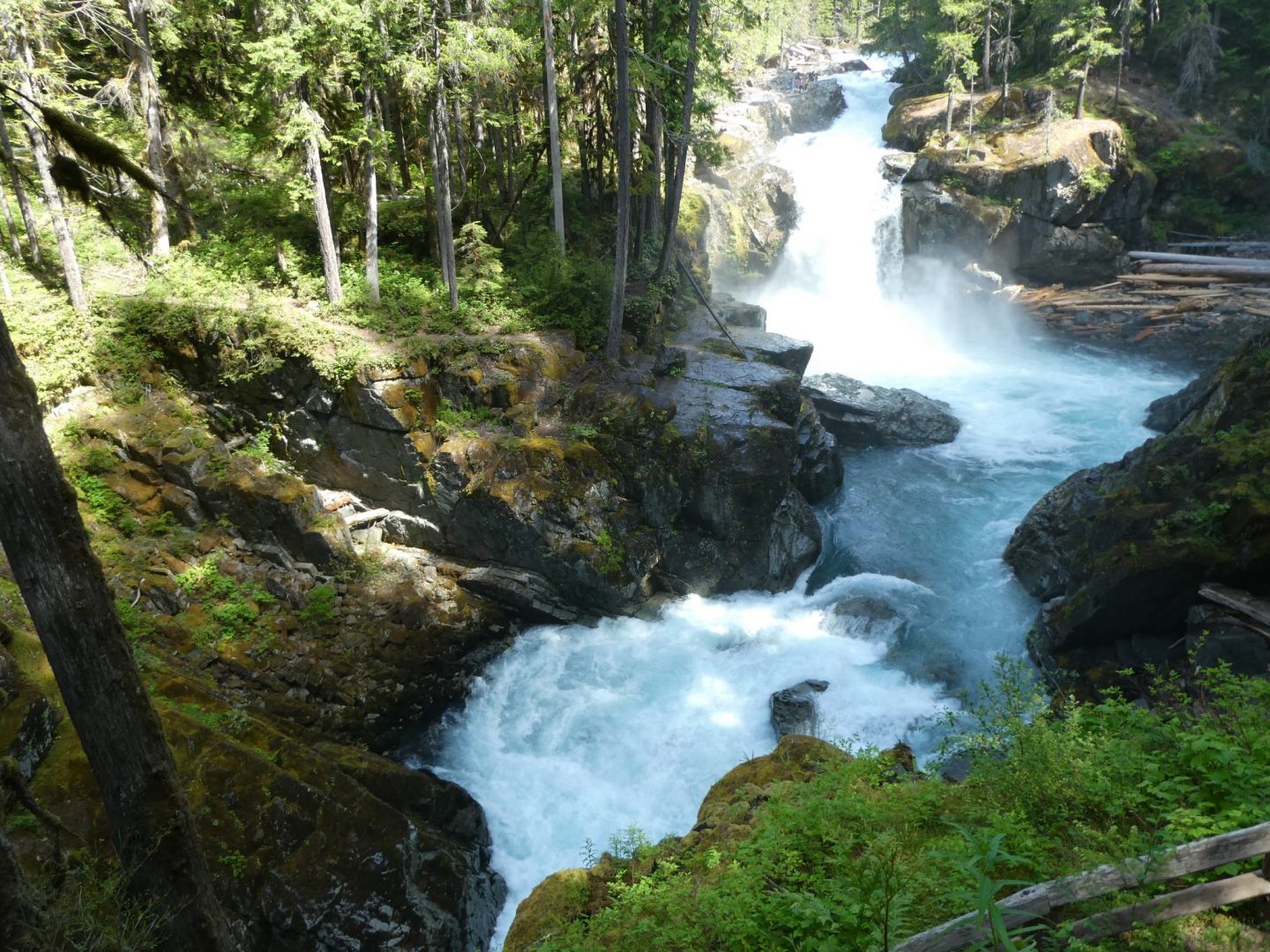 There’s a bridge across the river downstream of the falls and a spur trail leads up to an overlook at the top.

Just after that there’s a junction with the Eastside Trail, an 18.5km track heading up toward the east side of Mount Rainier.  We’d been advised by a ranger that the path was clear for about 5km but then obstructed by ‘blow downs’ – trees that have fallen due to wind and snow in the winter – which haven’t yet been cleared.  We decided to take the trail and see how far we could go.

It was like a postcard of northern North America. 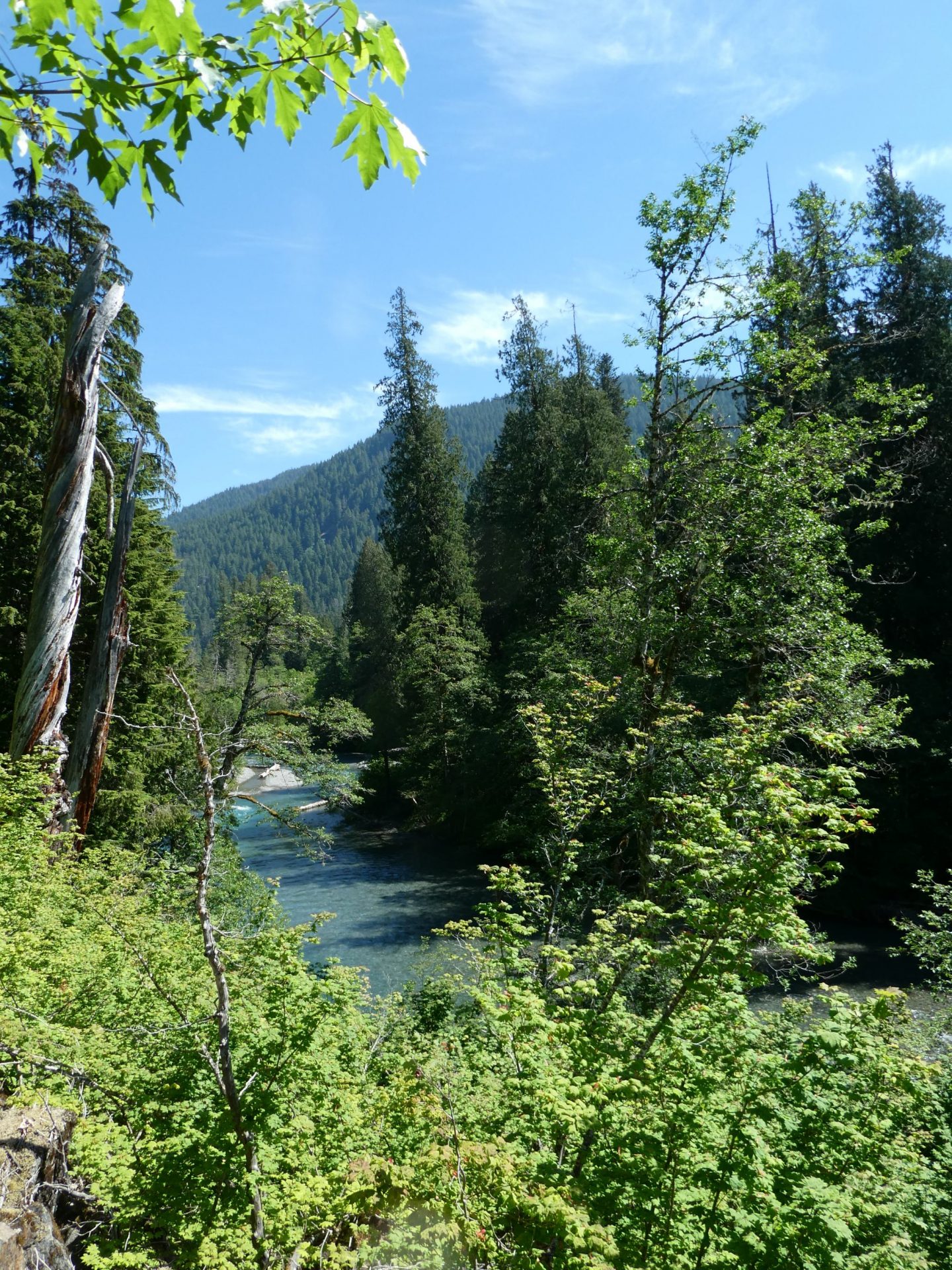 They could have called this the Cascades Trail.   The track followed the river upstream with lots more small waterfalls and cascades. 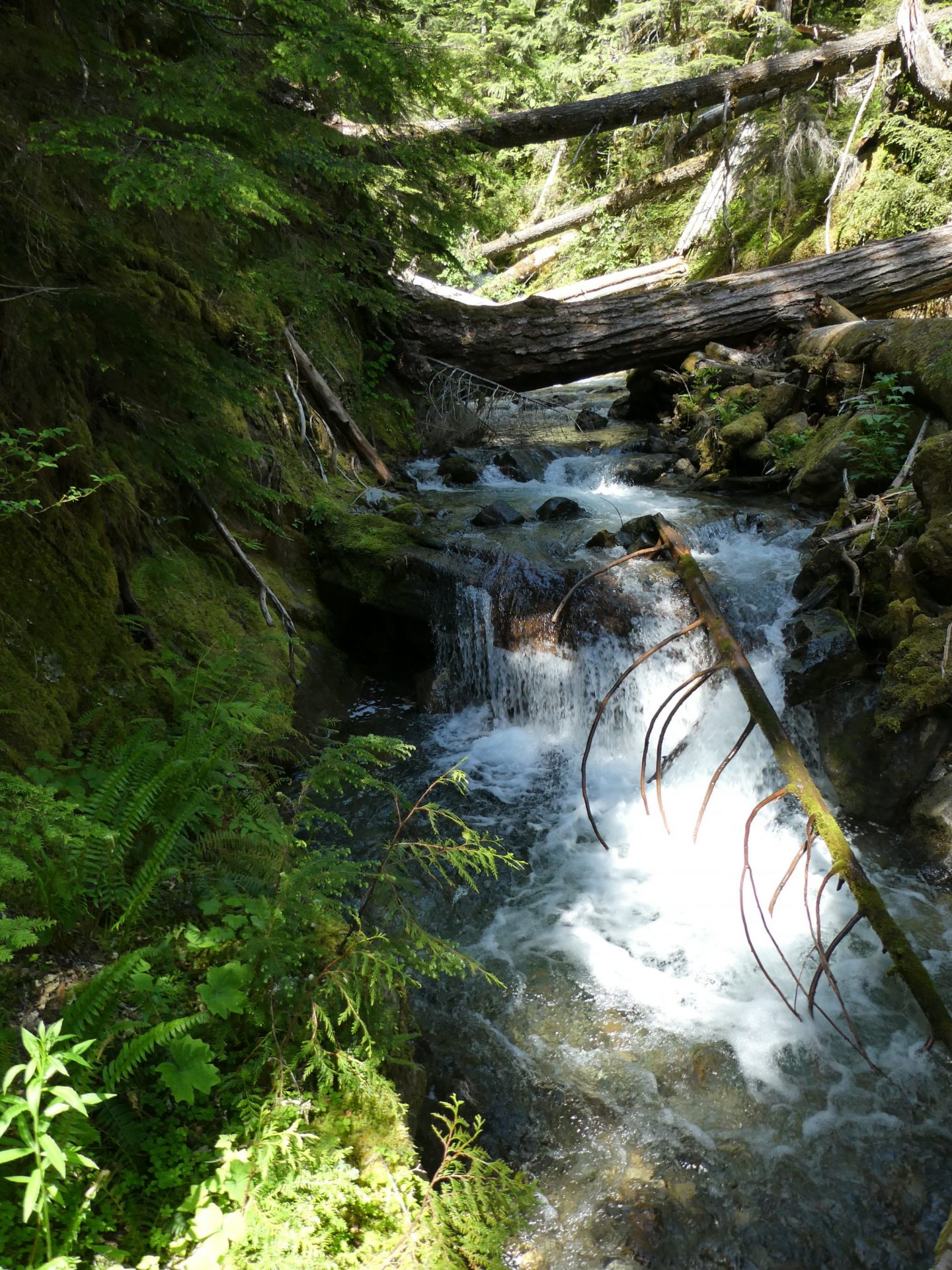 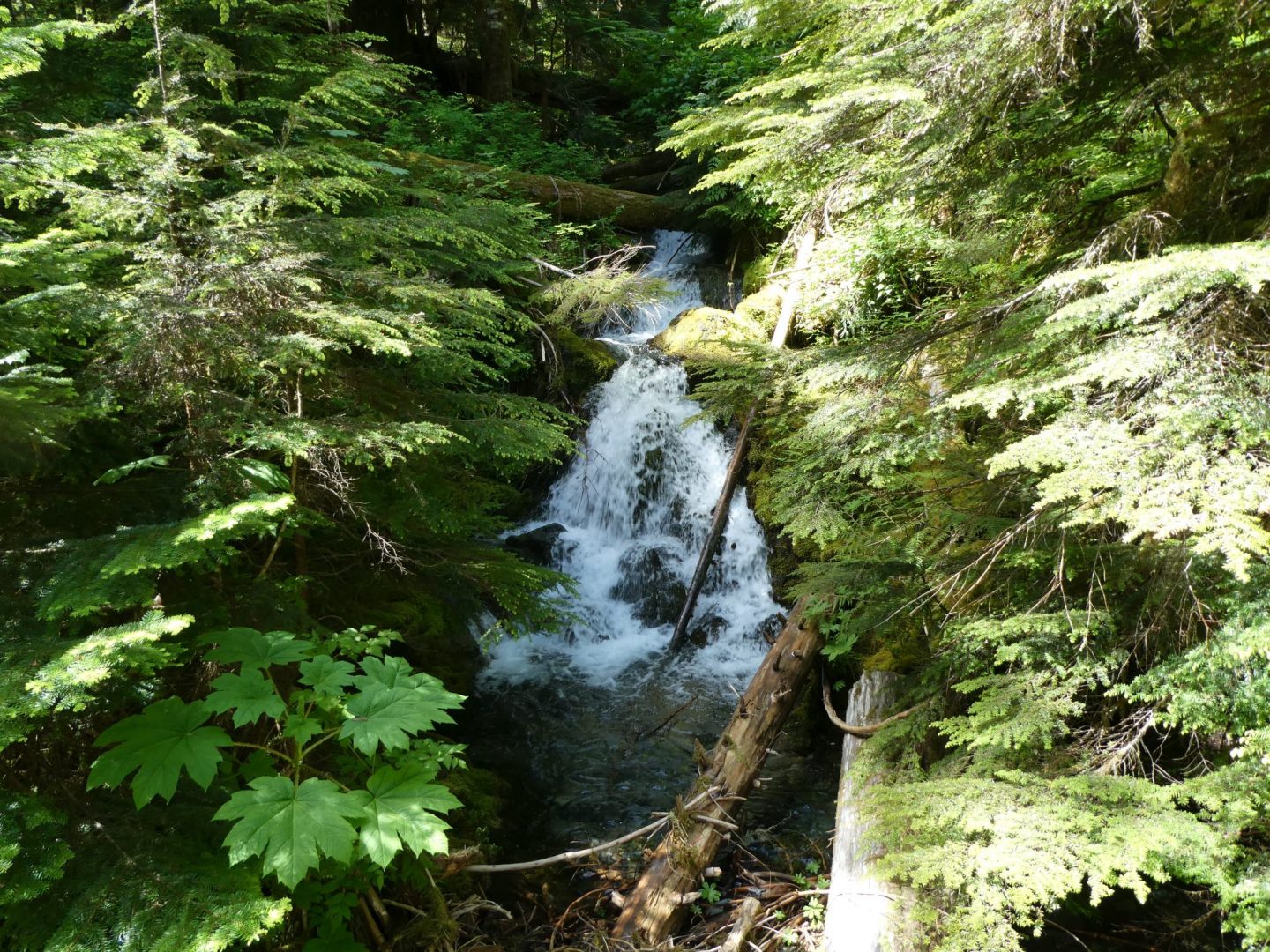 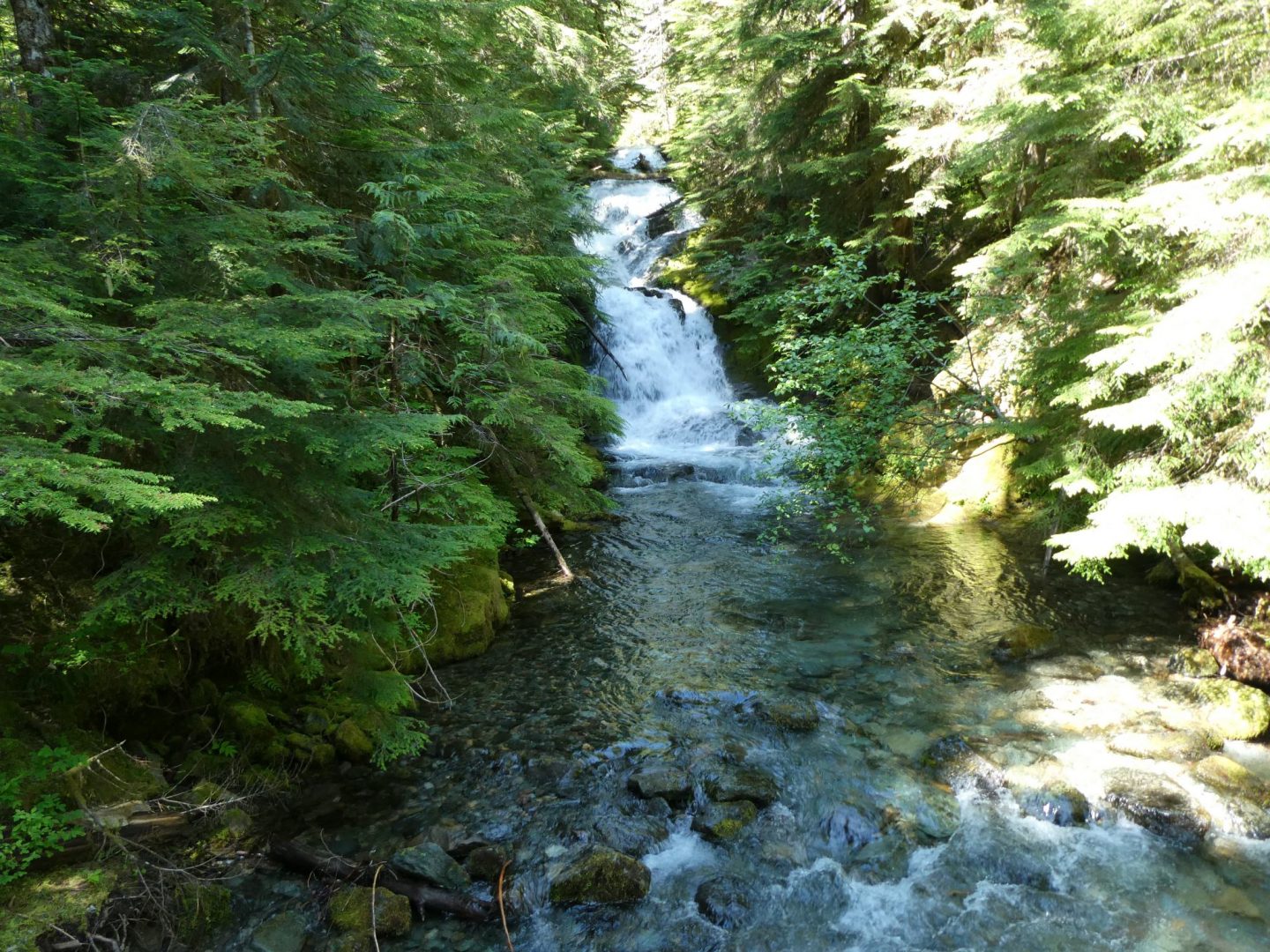 For about 4km the trail was obstacle-free with occasional freshly cut logs to the side indicating recent clearing activity.  Further on we climbed over a few smaller fallen trees.  But eventually the obstructions became greater, and we were ready to head back anyway, so we stopped for a picnic and then returned.

And along the way, once again the benefit of taking the trail less travelled – a chance to see the shy creatures who won’t come out to play when there’s crowds around! 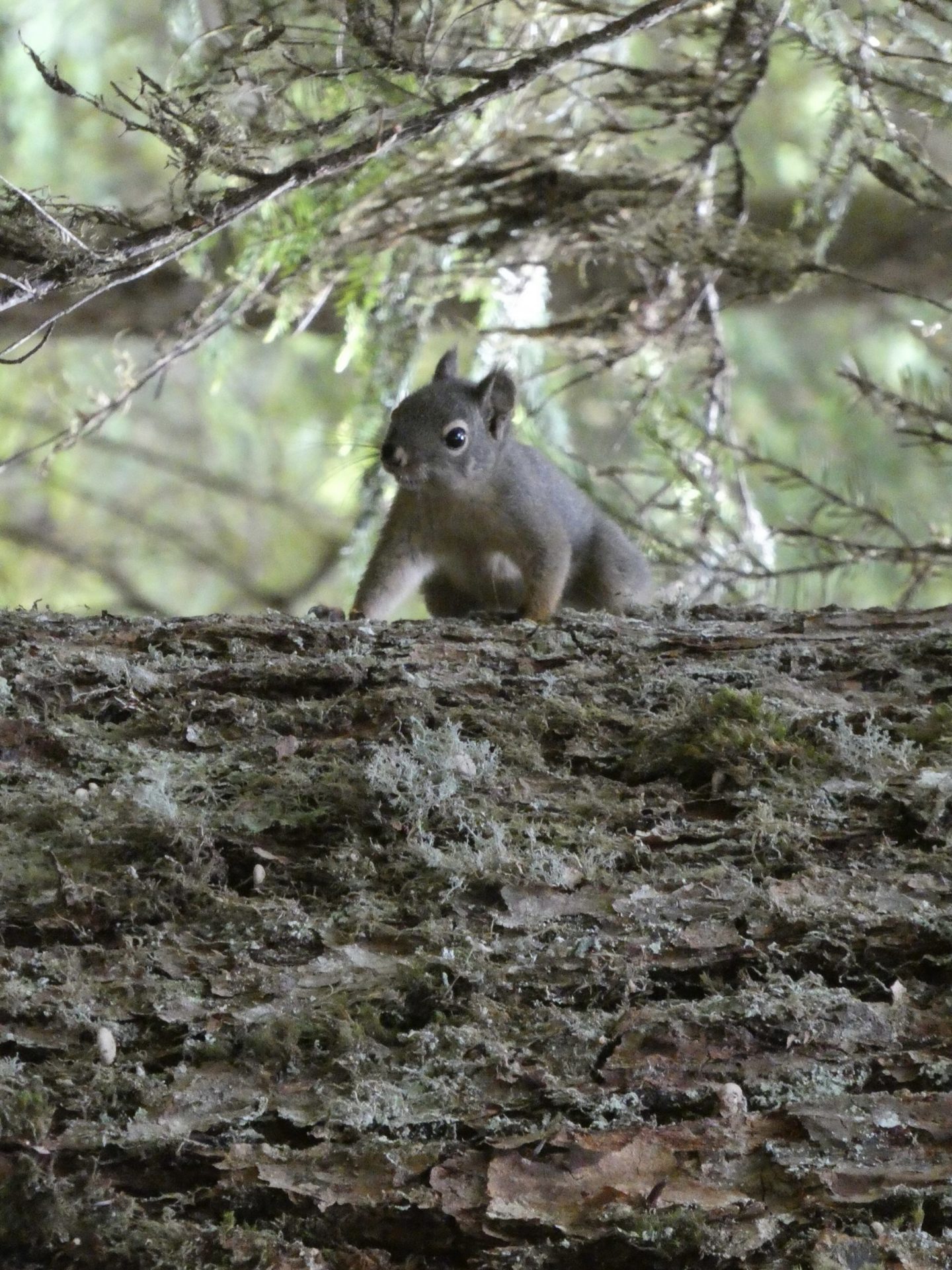 Mount Rainier is a stunning national park.  Lots of variety even with the snow closures, and there would be even more to experience later in the summer.  It’s well patronised but if you target longer walks or ones which are a little off the beaten track, there’s solitude to be found.  And even on the more visited routes, beauty abounds.