We met a fellow at Columbia Gorge who informed us with some authority that the Trail of Ten Falls in Silver Falls State Park is ‘the most beautiful walk in Oregon’.  We were headed to the Willamette Valley and the park is about an hour south of where we were staying so we thought we better go there.

To visit all ten falls, hikers make a 13km loop combining a couple of the trails in the park.  It’s not a difficult walk and it’s pretty and rewarding all the way.

First up is South Falls with a drop of 54 metres.  Impressive. 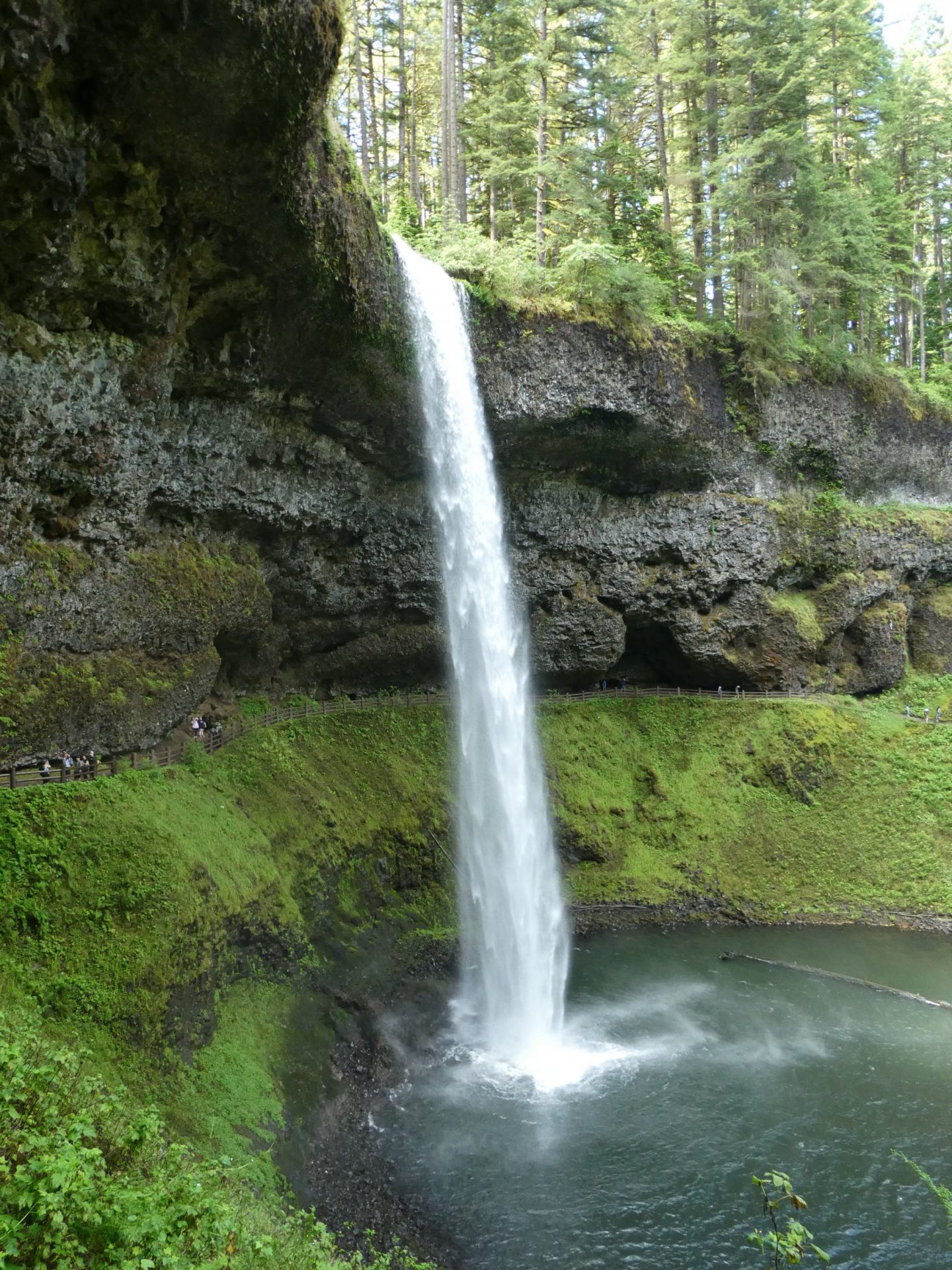 And the trail goes behind the falls so you get a different perspective looking out through the cascade. 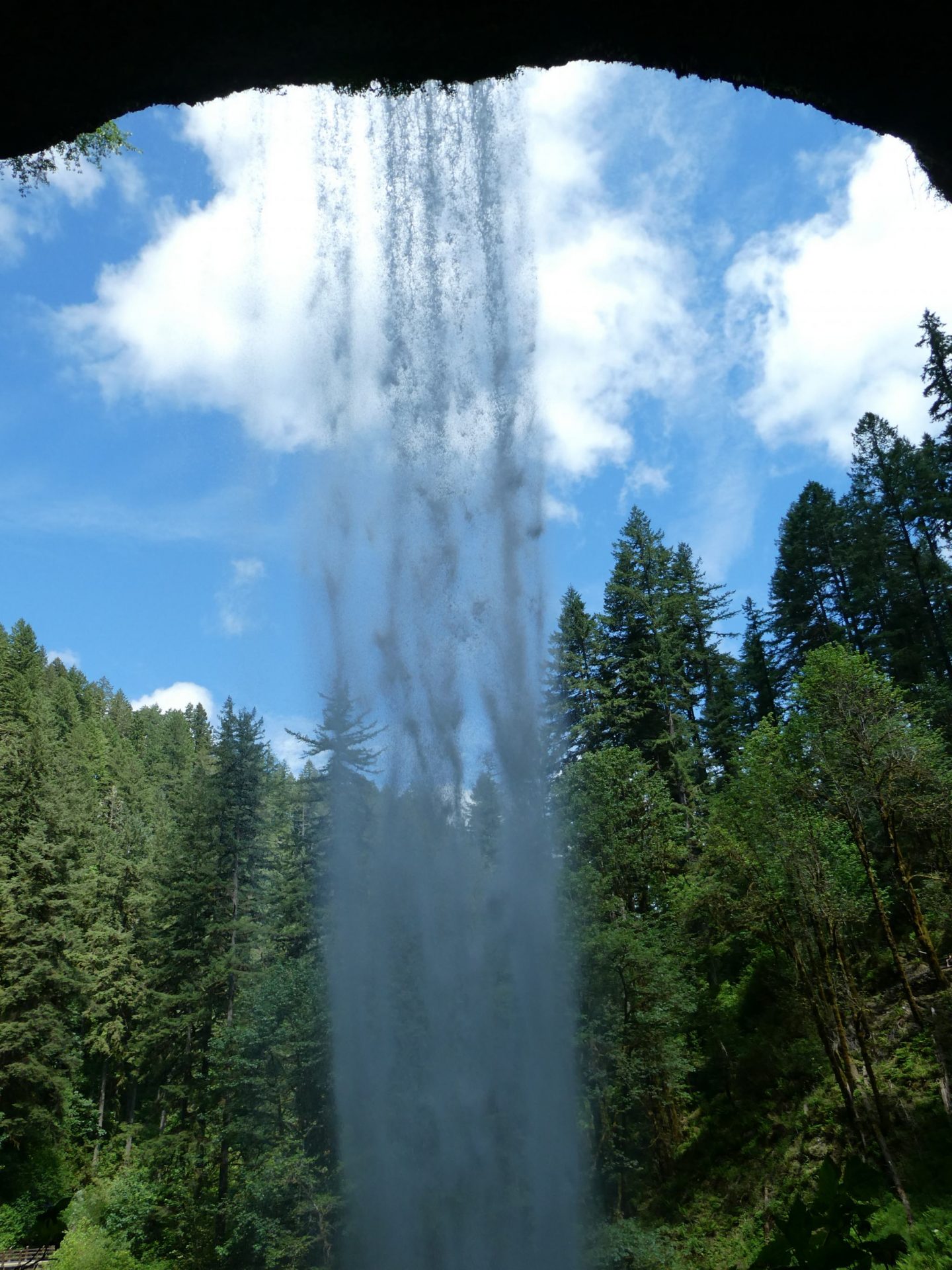 The trail then winds down to Lower South Falls with a drop of 28 metres.  We should warn you now – whoever named these 10 falls was a geographer not a romantic or an advertising exec. 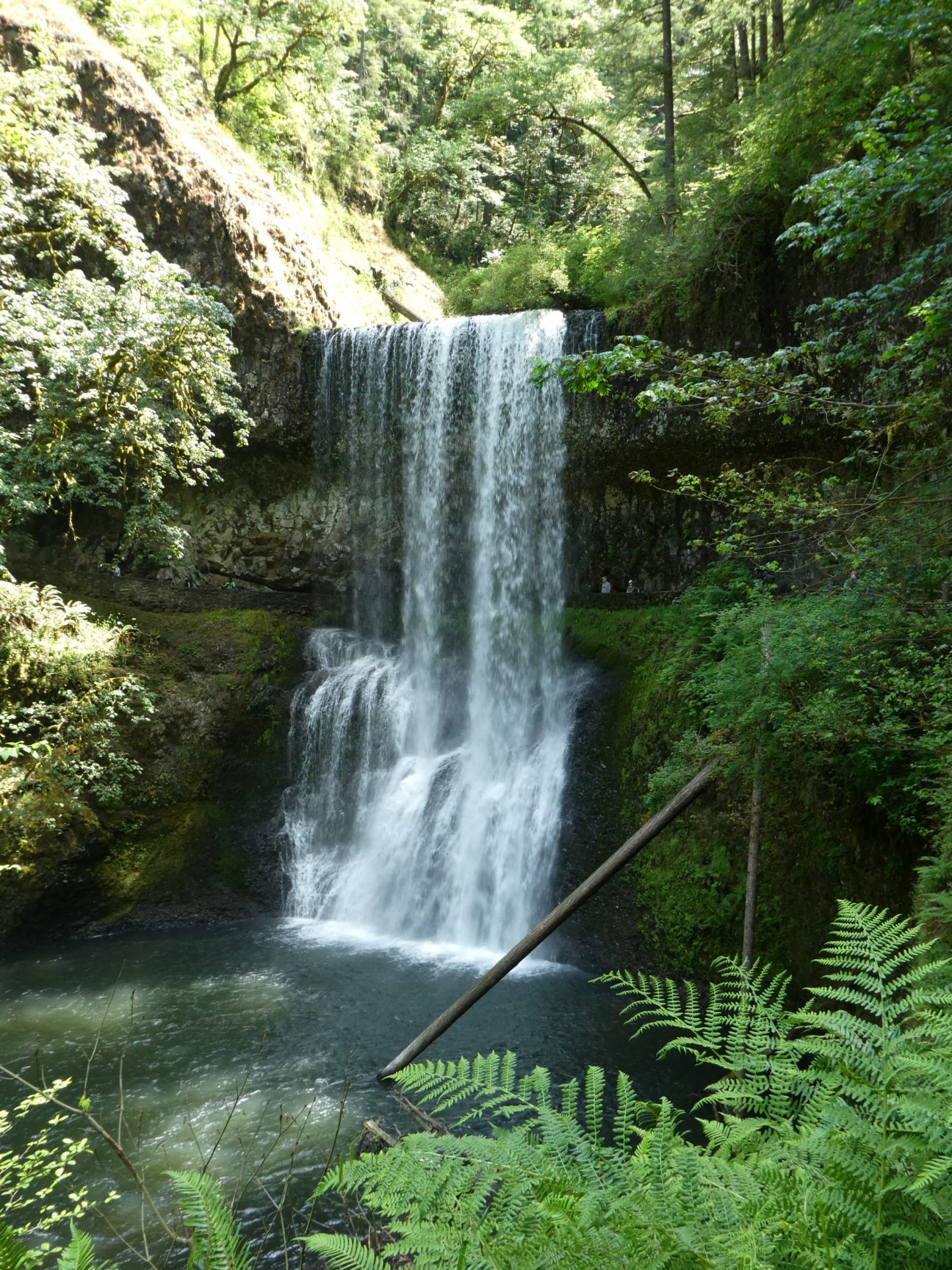 This is another of the falls that you can walk behind. 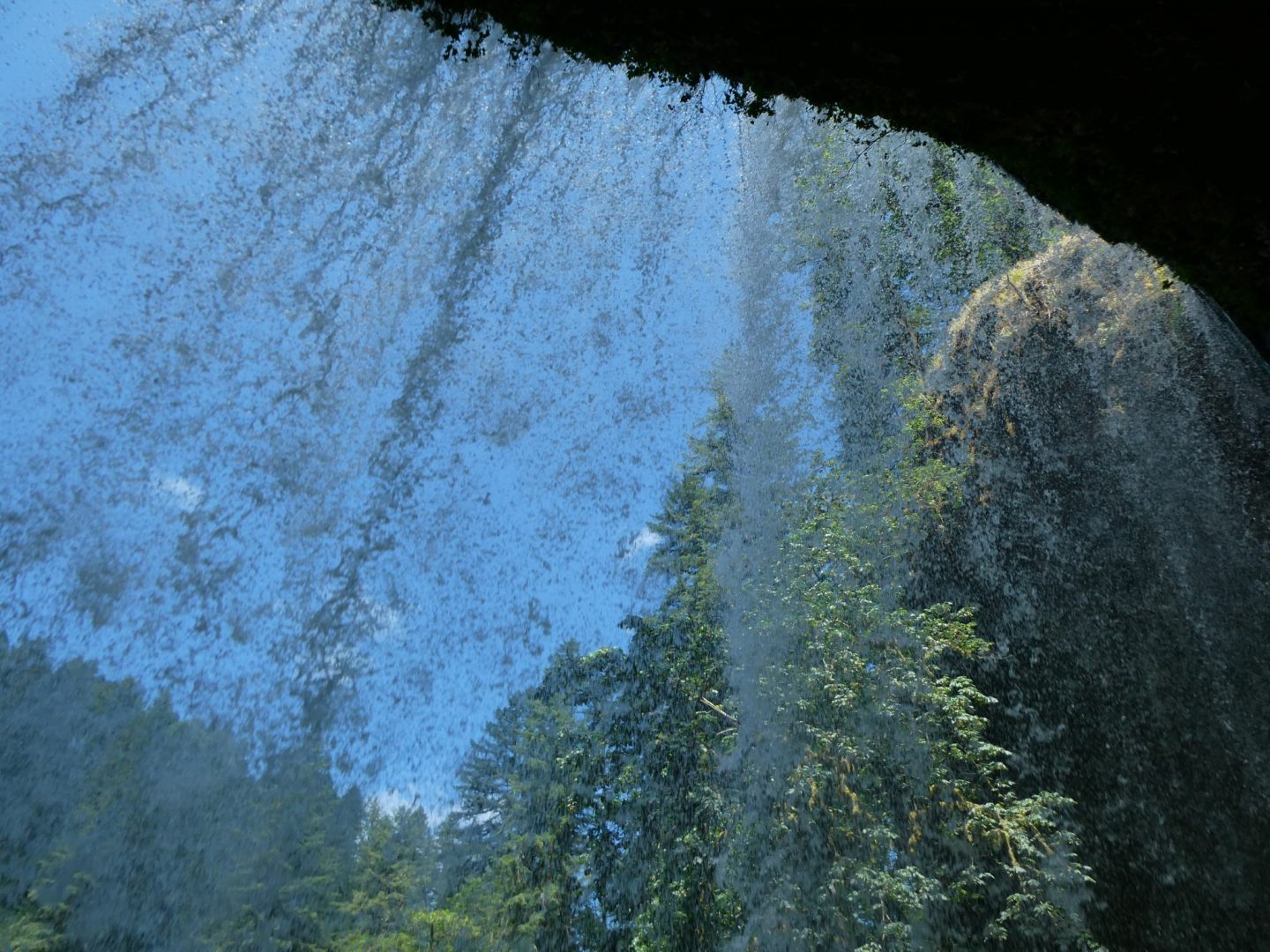 Next is Lower North Falls.  With a drop of just 9 metres, it’s a baby compared to some of the others. 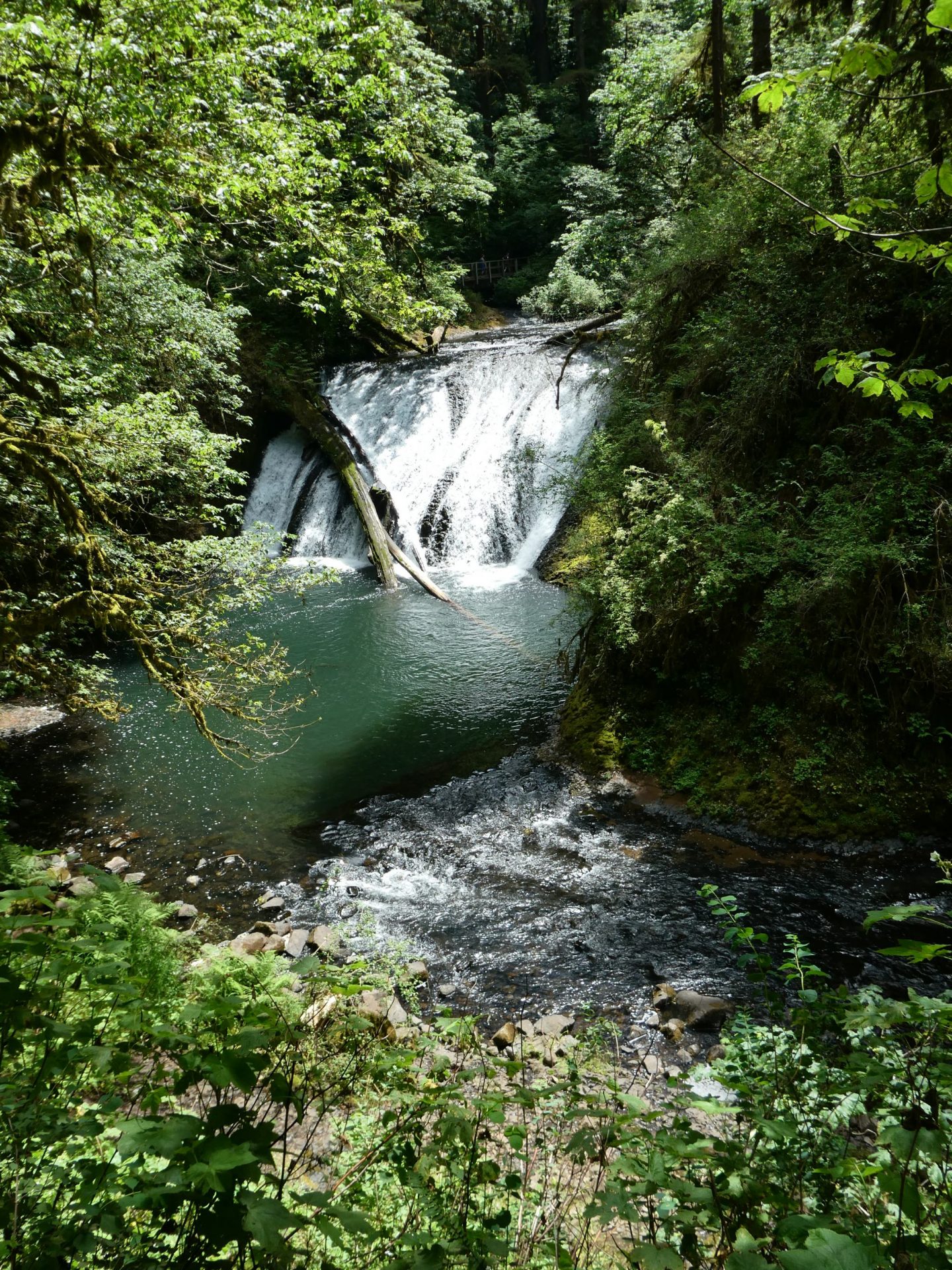 Double Falls is the tallest in the park – a majestic 56 metre double-drop with a pool between the first and second plunges. 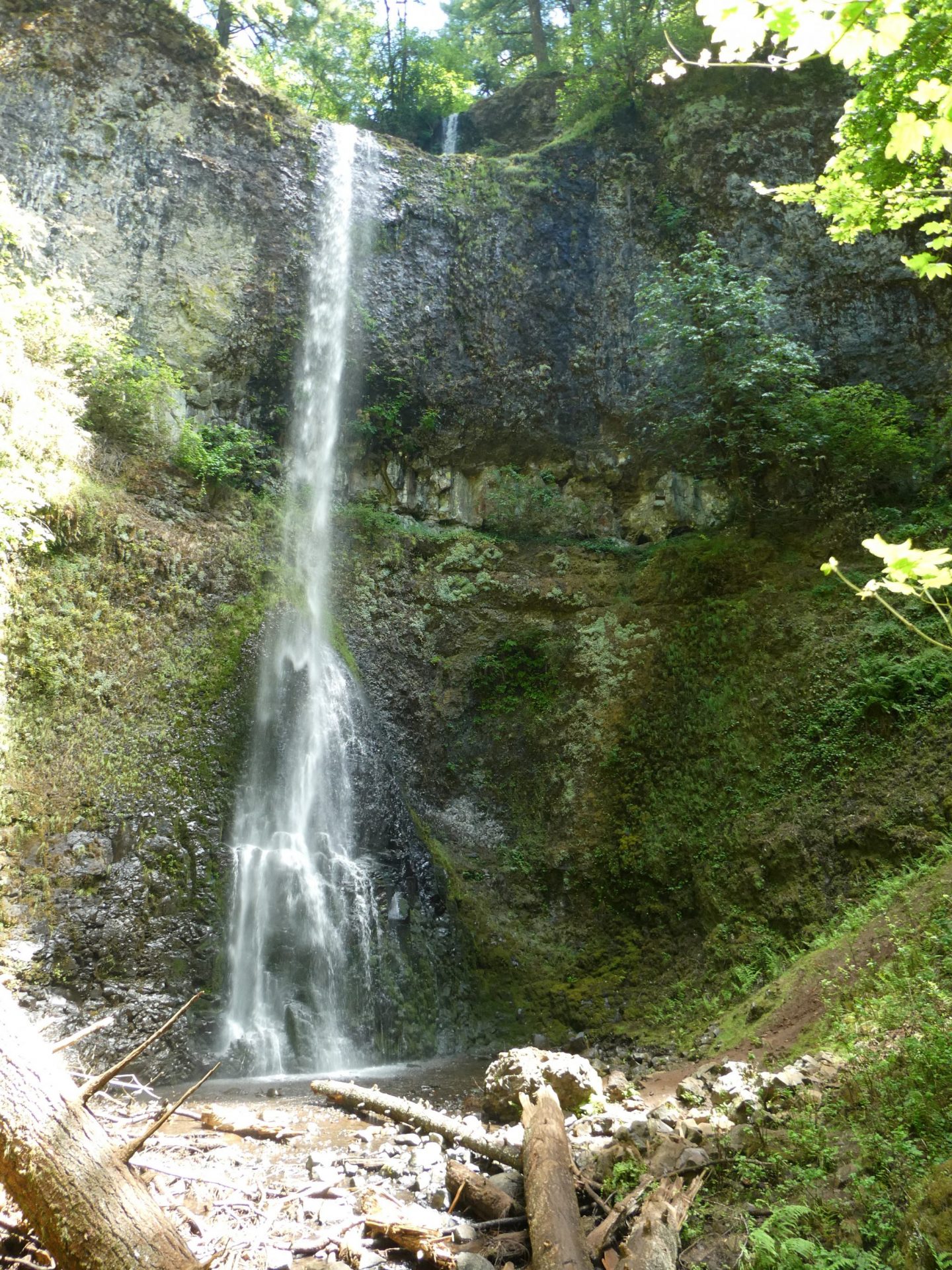 Drake Falls is another baby.  At just 8.2 metres, it is the shortest along the trail. 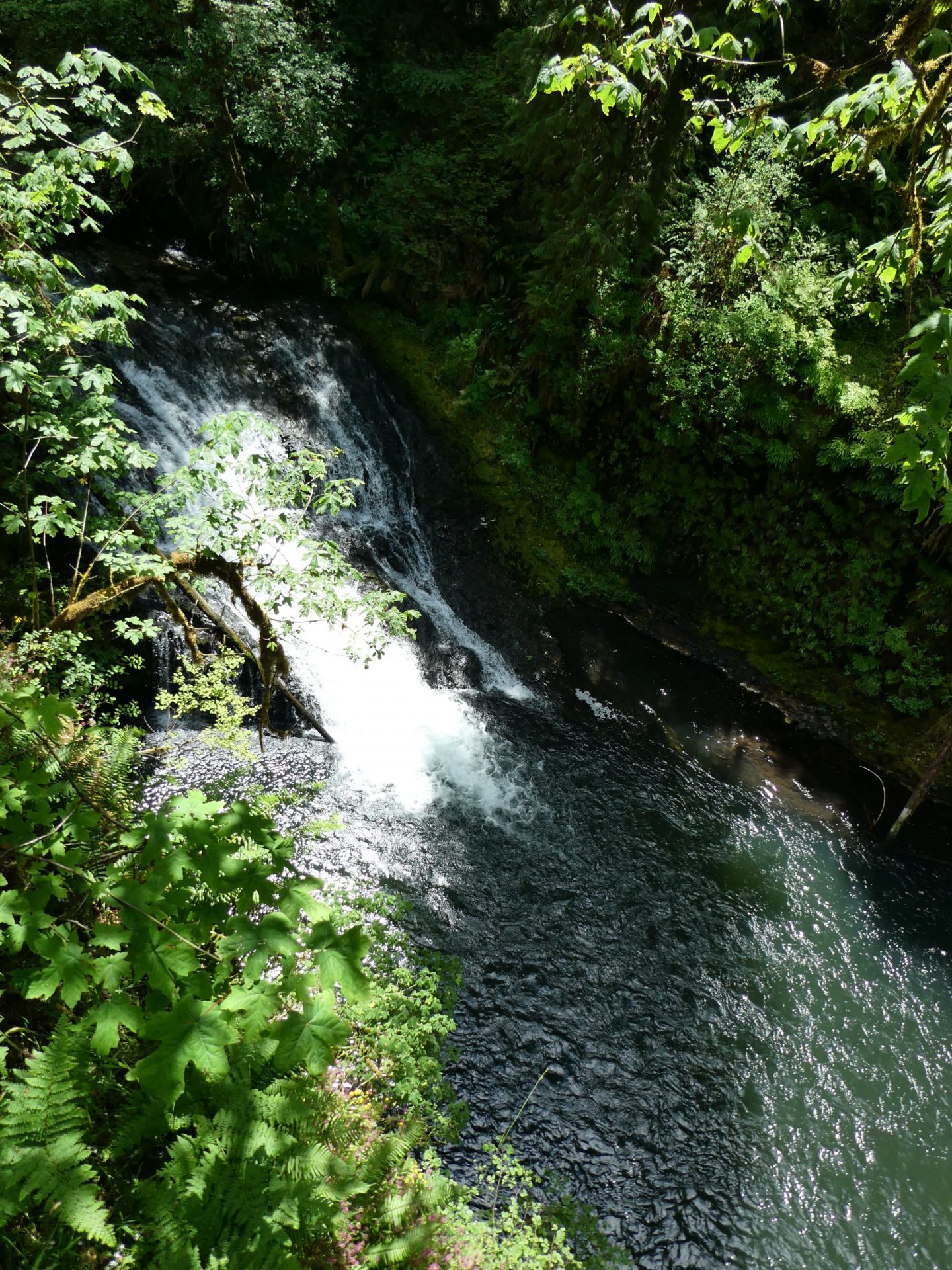 At 32 metres, Middle North Falls is another of the bigger ones. 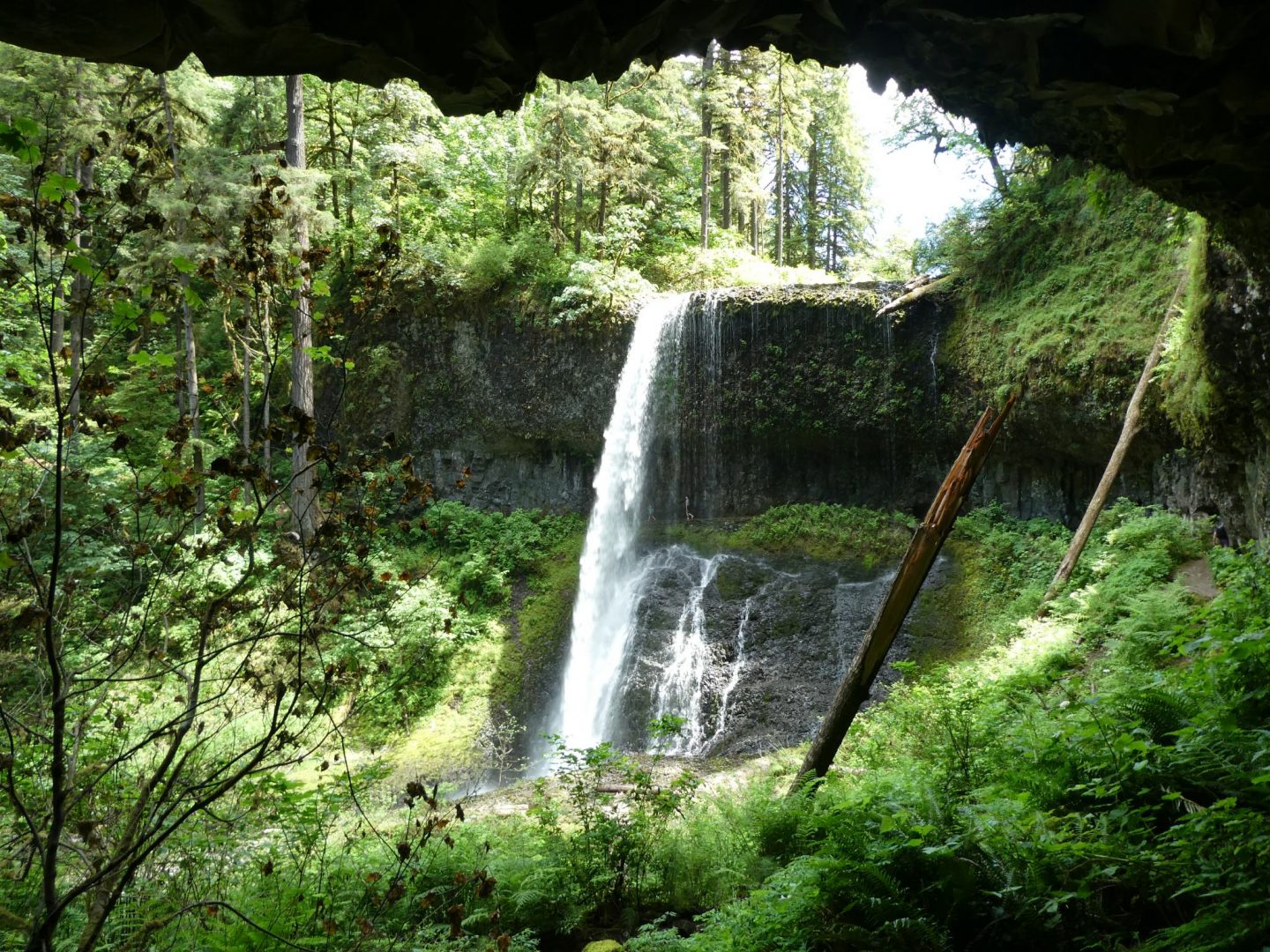 A dead-end spur trail allows hikers to walk behind the drop. 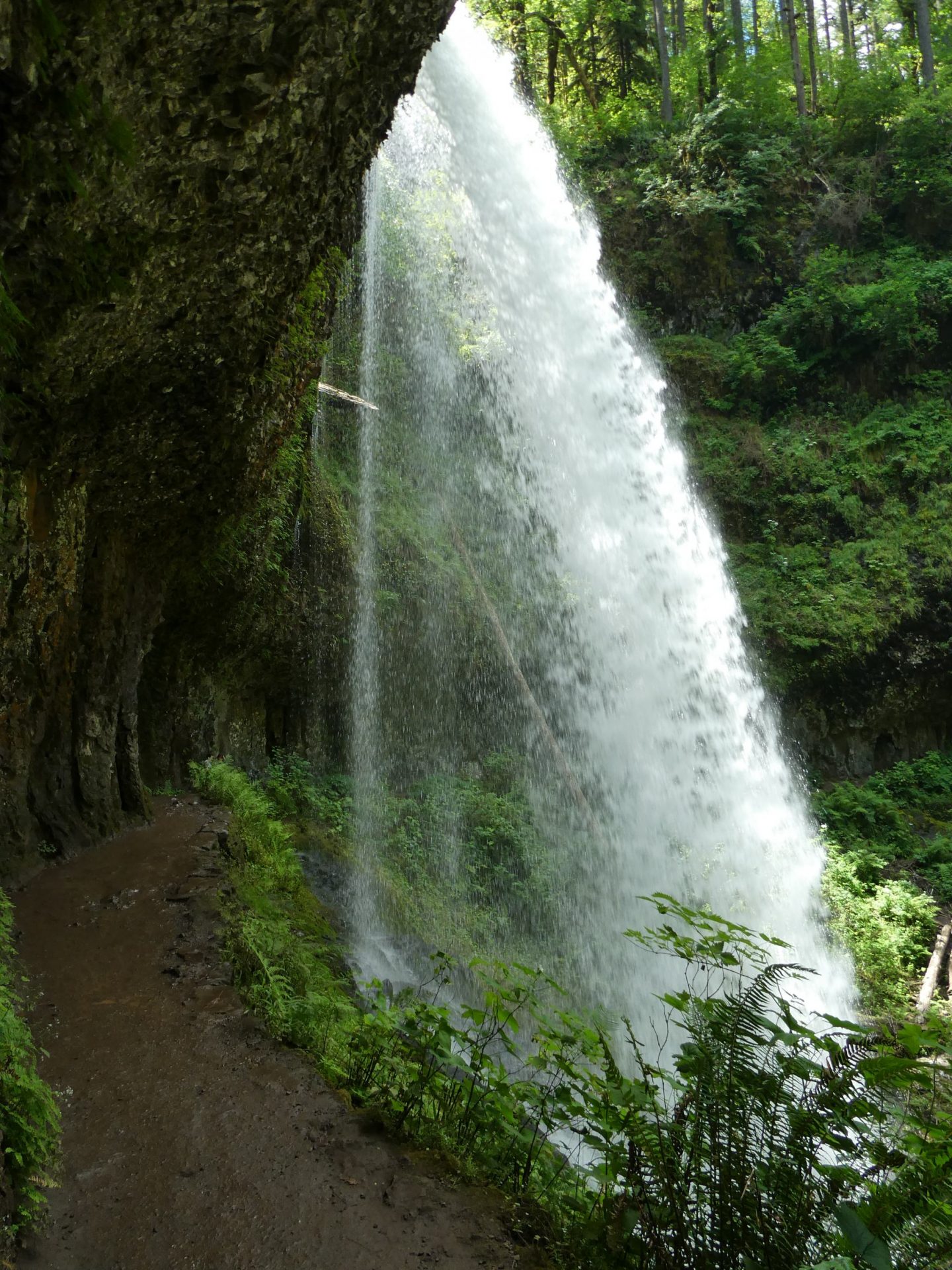 Next up is Twin Falls.  In spring when ice melt feeds the river, the water cascades over an angled basalt ledge, splitting the flow, hence the name.  As summer progresses, the flow in one channel gradually reduces until the falls don’t really look ‘twin’ at all. 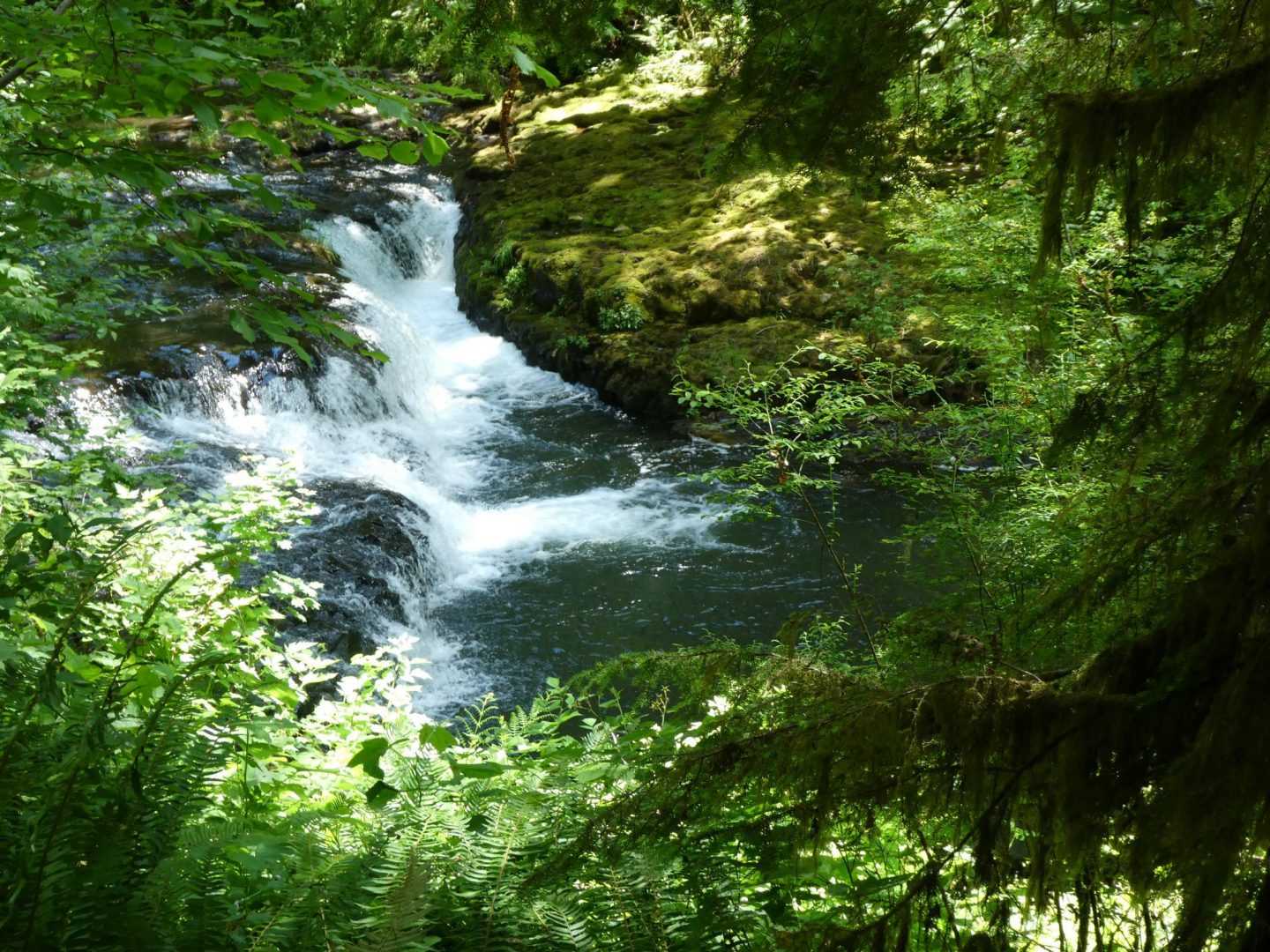 At North Falls, the water from the river is channeled through a narrow cleft in the rock to plunge 41 metres into the pool below. 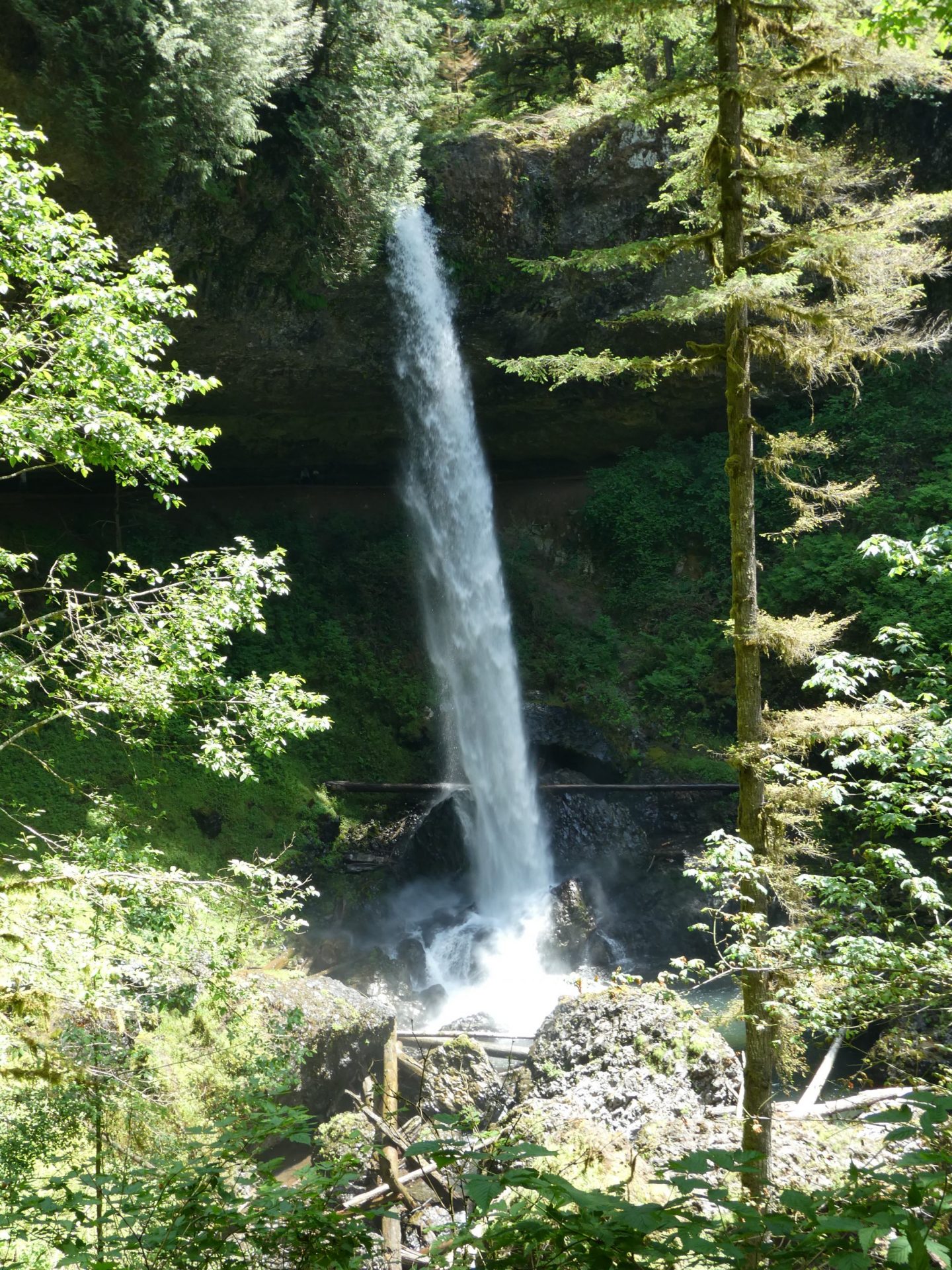 It’s the fourth and last of the falls it’s possible to walk behind.  The walkway is narrow and muddy and the sound of the falls is magnified into a roar.  There’s even a few bench seats to sit and have a snack. 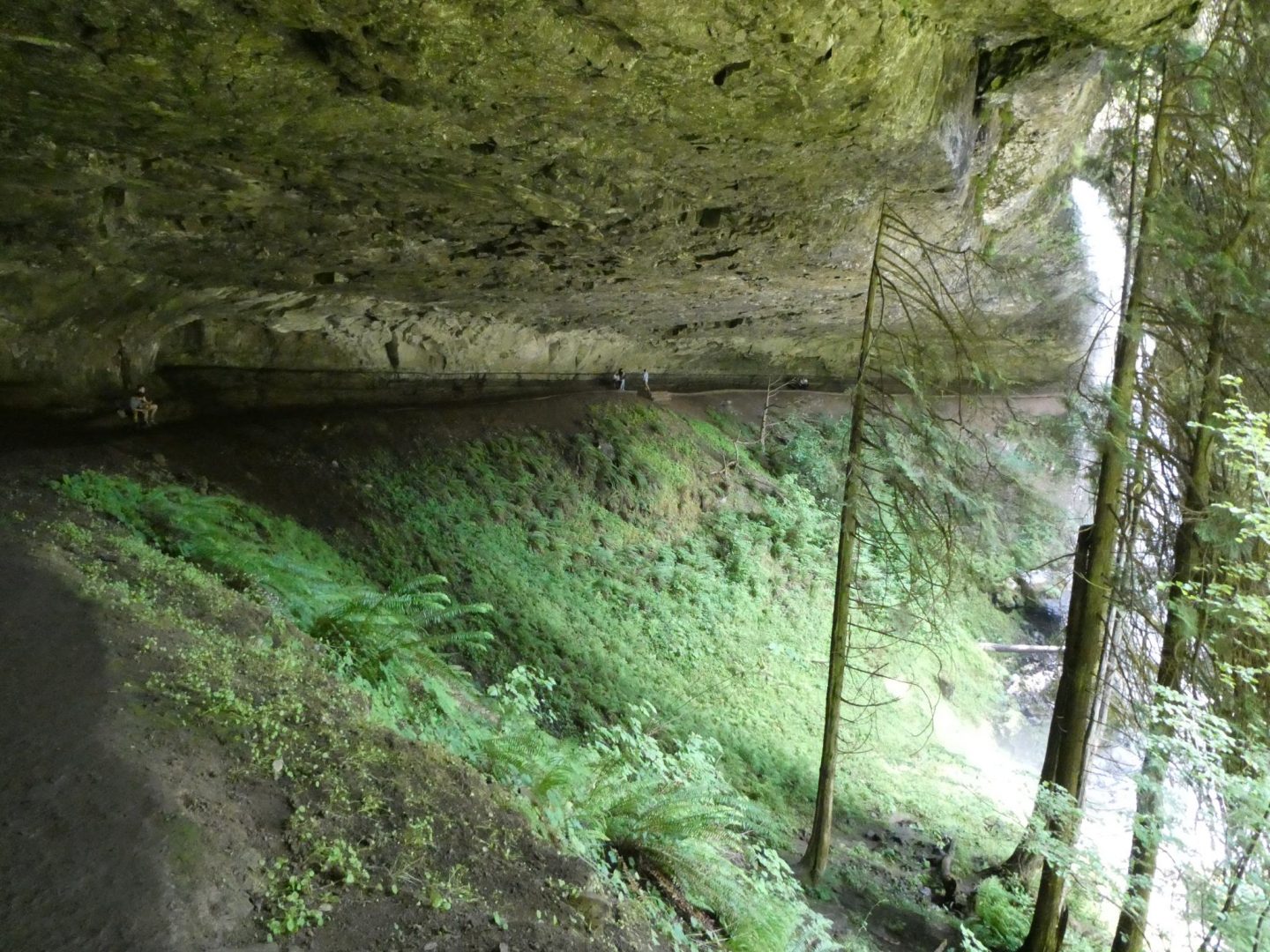 Upper North Falls is, as you would guess, upstream of North Falls.  On a short out-and-back track off the main trail which is also accessible from the road, this one gets a lot of visitors who don’t want to walk the full loop, but it’s still a beautiful spot. 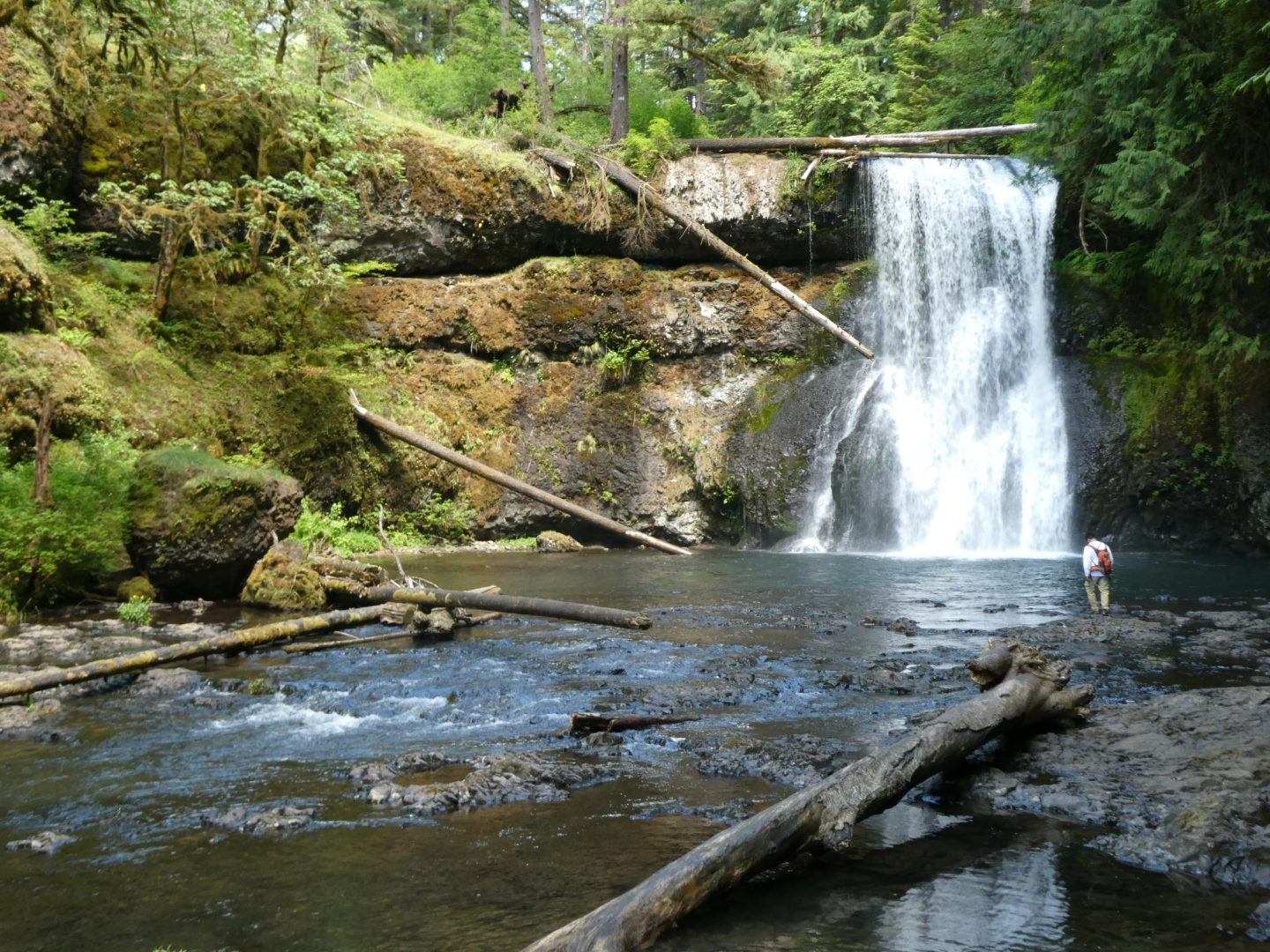 And lastly Winter Falls.  This one is seasonal and dries up completely by late summer but was still flowing when we visited. 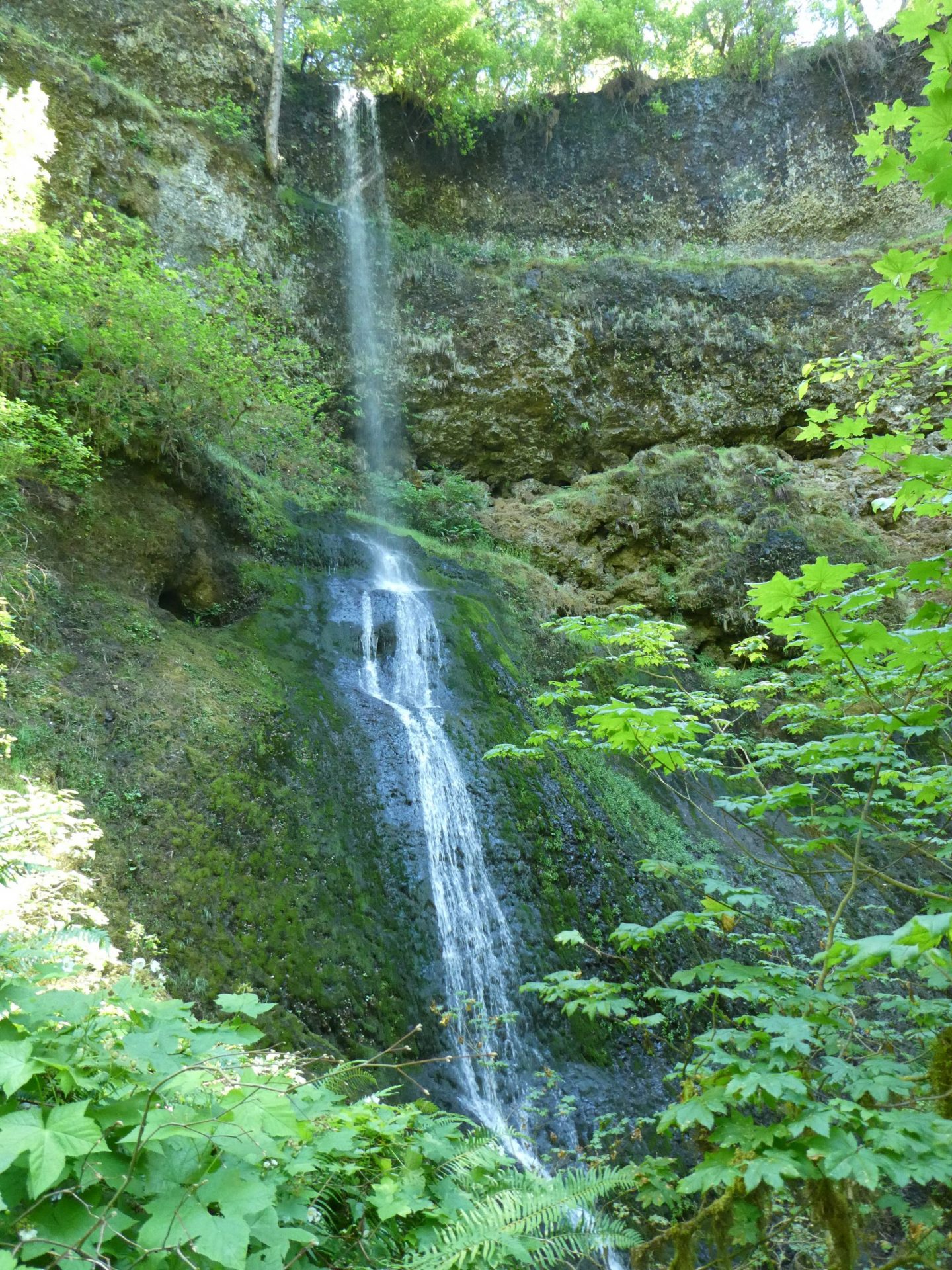 Did all those waterfalls seem like hard work?  Not really, but still a good excuse for some downtime in the vines.  The Willamette Valley is on the same latitude as the Cote de Rhone region in France and with two thirds of the state’s wineries, is ground zero for Oregon’s wine industry.  It’s especially known for its pinot noir, which happens to be one of our favourite wines.

Even by New World standards, the wine industry here is relatively new, with the first plantings in 1965.  But in 1979, at a ‘wine olympics’ in Paris where 330 wines from 33 countries were subjected to a blind tasting, an Eyrie Vineyards tipple placed third in the pinot noir category.  The French were mortified and the Willamette Valley was on the international wine map.

After all the hiking of the last two weeks, it was time to over indulge. We booked a private wine tour – no designated driver required.  It was a perfect day and the wines were very fine indeed.  The rolling hills provide a fantastically picturesque setting and the wineries seem to specialise in idyllic settings for tasting. 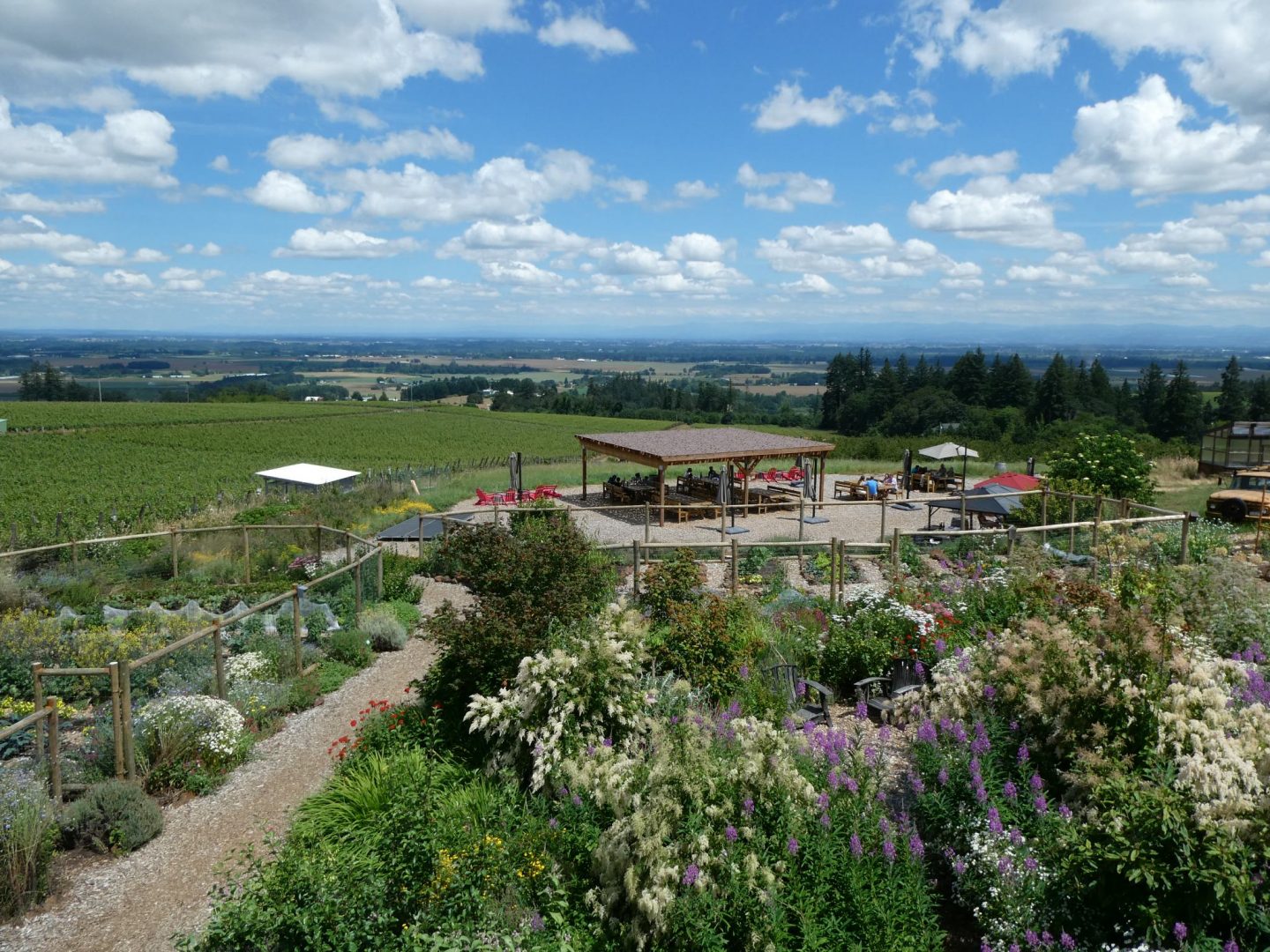 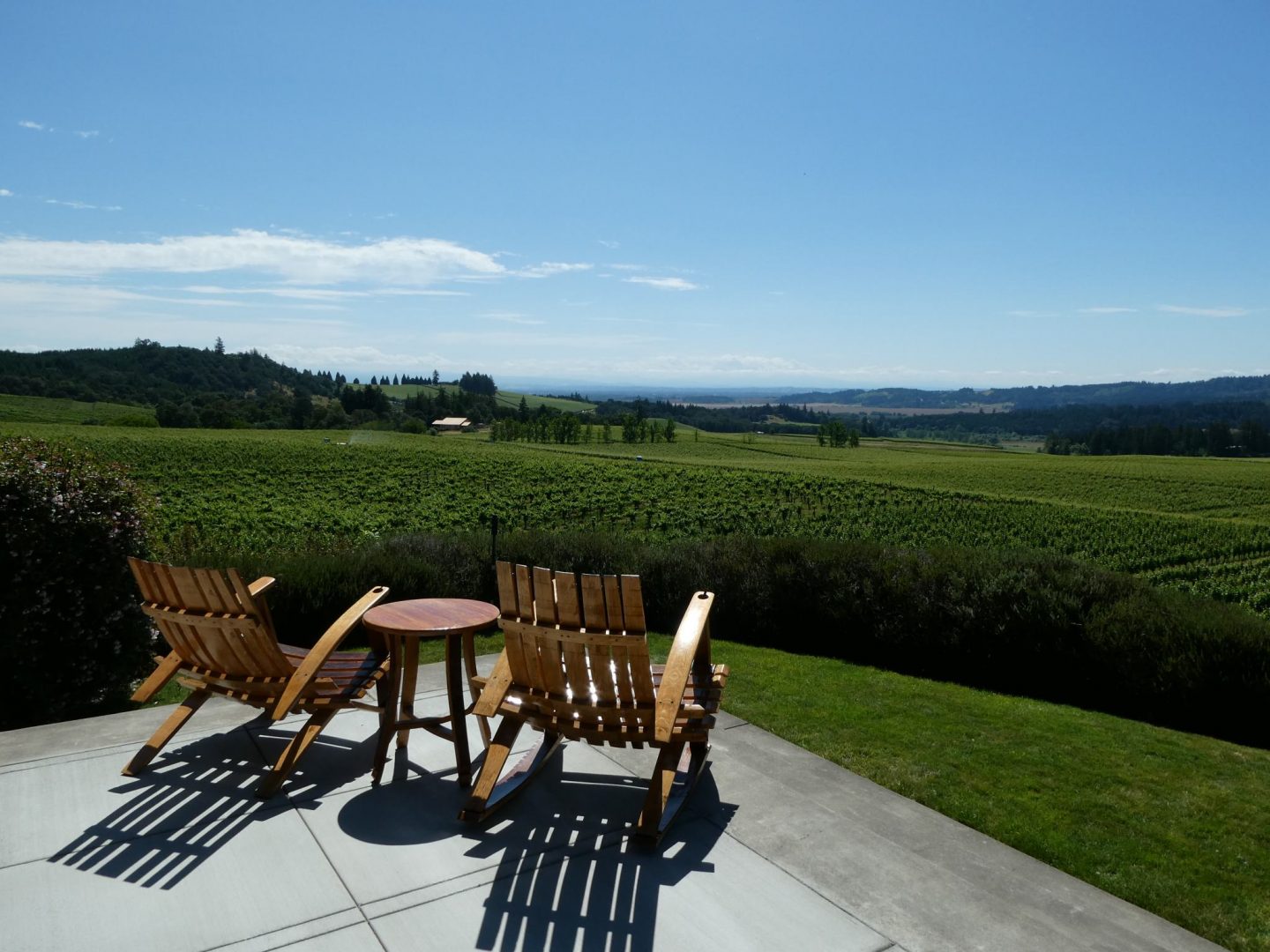 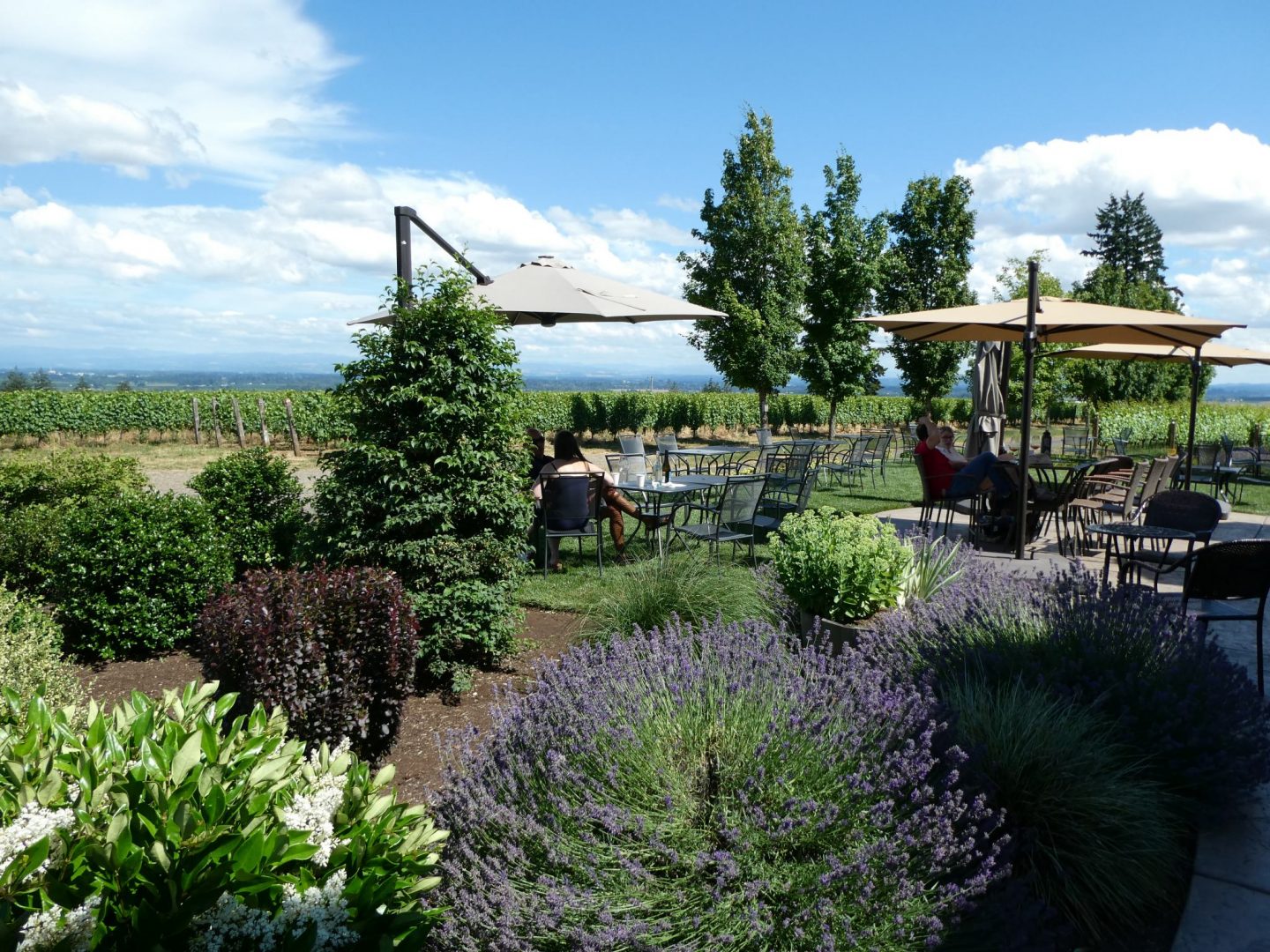 A thoroughly enjoyable day and we acquired enough bottles for the next week.  Or two.

And the world’s largest goose?  The Spruce Goose, of course!

Outside the small town of McMinnville, the Evergreen Aviation and Space Museum is really 2 museums co-located.  The Space Museum has a comprehensive, US-centric and rather patriotic exhibition on the space race, including John F Kennedy’s ‘We go to the Moon’ speech on continuous loop.  Excellent for space geeks but also simple enough for the average visitor.

The Aviation Museum has a large collection of military planes, an eclectic collection of aircraft involved in ‘firsts’ and a small but interesting exhibition on the early history of flight.

We were particularly amused by a panel telling the story of Aida de Acosta.  In June 1903, almost six months before the Wright brothers’ historic flight, Miss de Acosta flew a motorised dirigible over Paris to become the first woman to fly a powered aircraft solo.  Her parents were convinced that no man would marry a woman who did such things so they ensured it didn’t make the news.  Her historic first remained a secret for decades.  She never flew again.  Whether she went on to find the man of her dreams – or a husband – was not stated.  (In fact, she married and divorced twice.)

But we were there to see the Spruce Goose.  Between 1942 and 1947 Howard Hughes spent $US18m of the taxpayers’ money and $US7m from his own pocket designing and building a personnel and materiel carrier capable of flying across the Atlantic.  The goal was to create an alternative to shipping, which was under constant attack from German submarines.

Hughes’ prototype was six times bigger than any aircraft of the time and is still the largest flying boat ever built.  Until eclipsed in 2019, it had the longest wingspan of any aircraft that has flown.  Because steel and aluminium were reserved for the war effort, Hughes built it out of wood.  It’s made of birch not spruce.  Spruce Goose was just a nickname coined by the press, which Hughes hated but the name stuck.

The war was over by the time it was finished.  By then the government had lost interest and the public had no appetite for funding what was widely thought to be a folly.

Naysayers doubted the enormous craft would fly but Hughes proved otherwise by piloting it himself on a test flight which lasted a little over a minute and covered about 2km at an altitude of just 20 metres.  That was the only time it ever flew.

Until his death 33 years later, Hughes kept it in immaculate condition in a purpose built hangar, at a rumoured maintenance cost of $1m per year.  After his death, an entrepreneur purchased it and put in on display alongside the Queen Mary in Long Beach, California.  In 1992, after another change of ownership, the Flying Boat was purchased for the Evergreen Museum.  Such were the logistics, it took another 9 years to disassemble, transport and re-assemble it here.   It won’t be going anywhere any time soon. 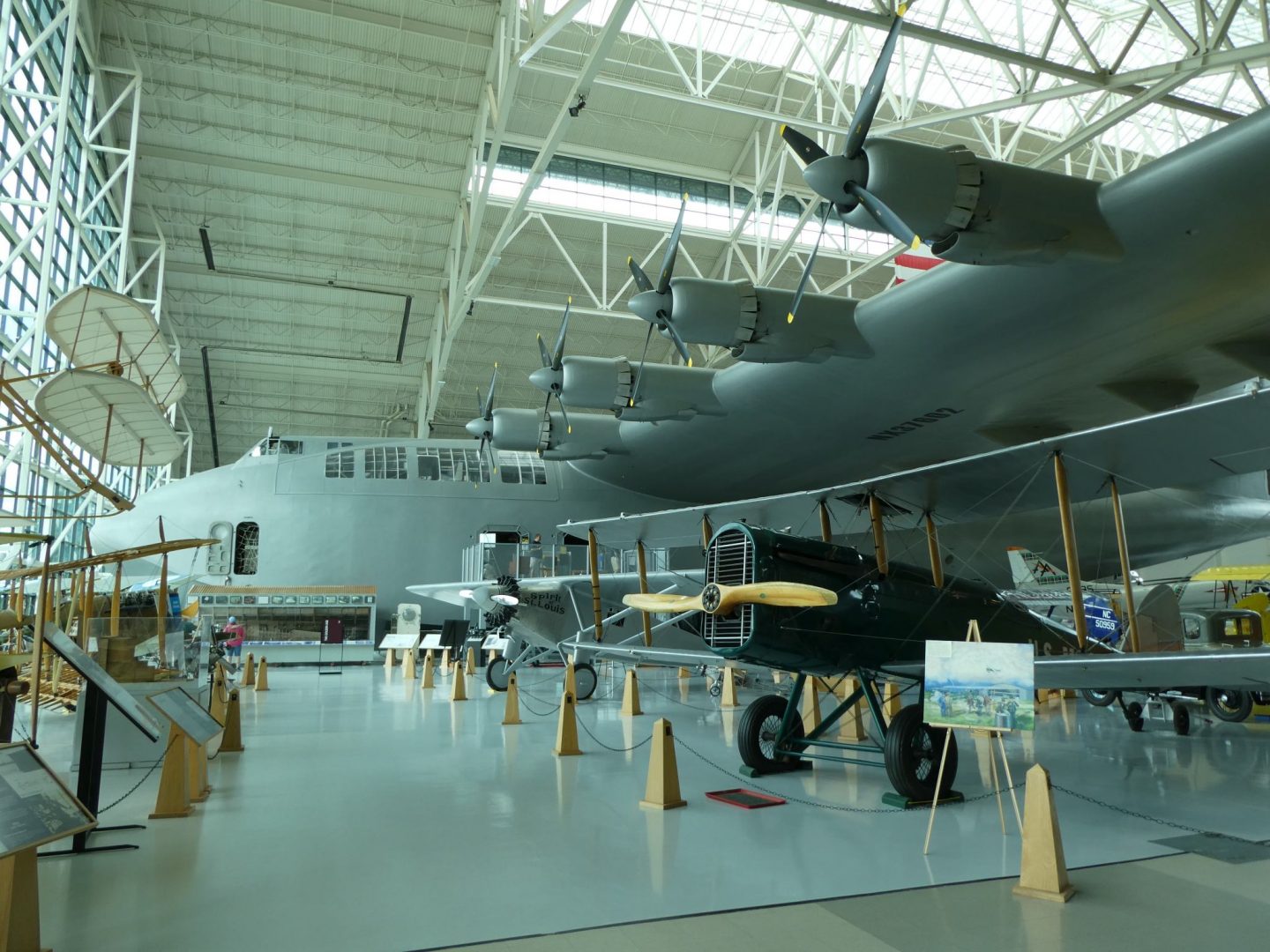 And last we should mention our accommodation in the Willamette.  We’ve long loved the sleek lines and design elegance of the silver Airstream vans – like the one Ben Affleck drives off in at the end of the movie The Accountant.  So when Julie found a vintage van resort with a range of Airstream vans re-purposed into ‘luxury retro accommodation’, she thought it would be just the thing.  Unfortunately her affection for these vans didn’t extend to understanding the difference between the Airstream Panamerican in the movie and the 1959 Airstream Globester which she booked.  To be clear – it’s just over half the length of the Panamerican.  And when it comes to vans, like some other things in life, size does matter.  It was probably the smallest digs we have had in all our travels.  It did come with our very own flock of plastic pink flamingos, though. 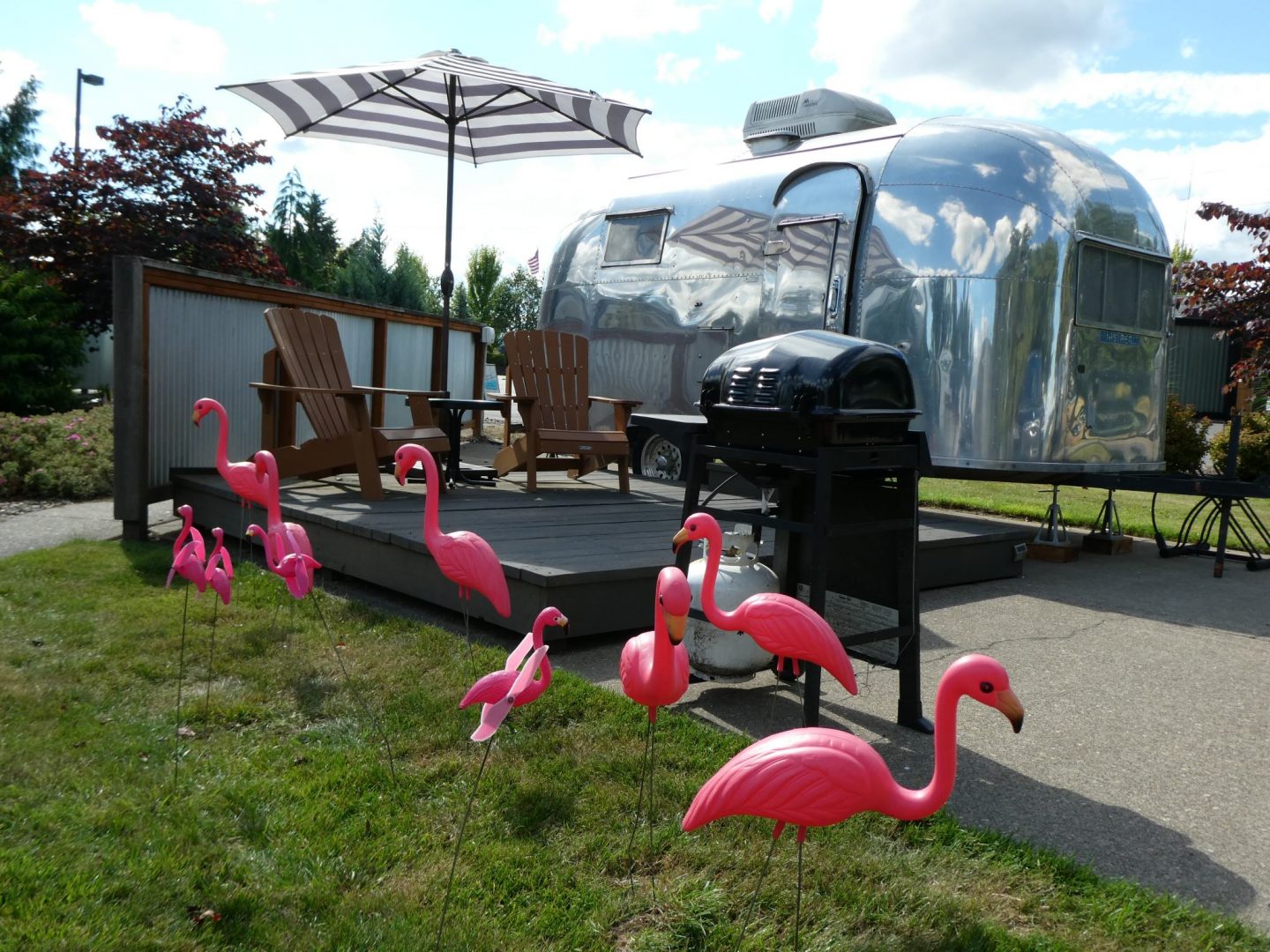 John thought the van was ridiculously small and the flamingos were, well, just ridiculous.  He was right on both counts, but it did lead to a philosophical discussion as to whether something can be both ridiculous and cool.  Julie maintains that a vintage silver caravan flocked by pink plastic flamingos can be both.  John disagrees.  Enough said.