From the Willamette Valley we drove across to the coast and north on the very scenic Oregon Coast Highway.  We were headed to the Olympic Peninsula but en route we stopped for a couple of nights in the delightfully named town of Seaside.

With a beachfront pathway that runs for miles, the southern end where we stayed had the laid back feel of a community that doesn’t take things too seriously. 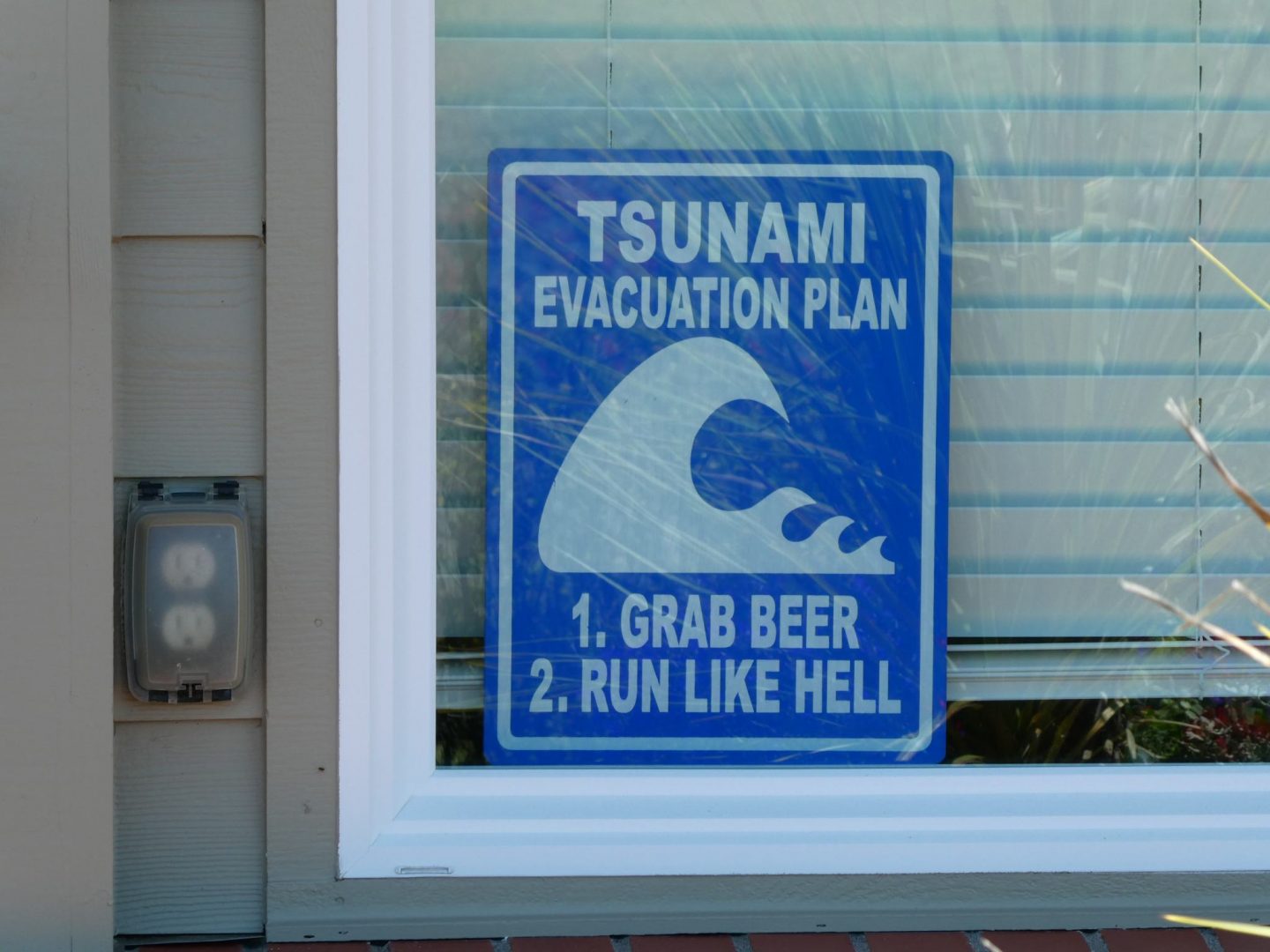 At Cannon Beach, just south of Seaside, is Haystack Rock, the third largest inter-tidal sea stack in the world.  It’s a basalt uplift caused by a volcanic eruption between 16 and 25 million years ago.  At 72 metres high and surrounded by sand and rock pools, it’s quite striking. 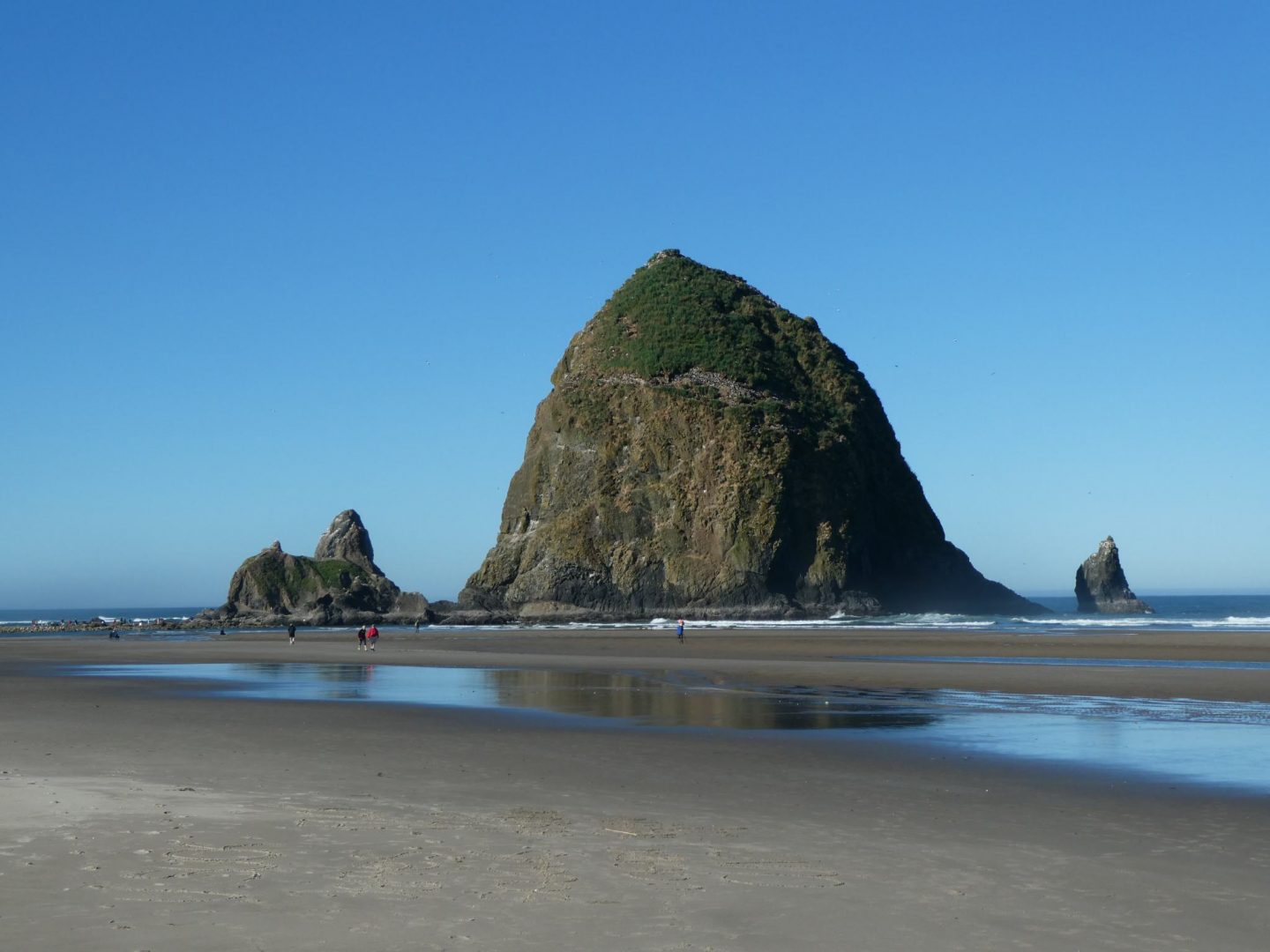 To avoid confusion, there’s another Haystack Rock 100km further south near Pacific City, which is taller but sits 1 1/2km offshore.  In contrast, this one sits on the tide line, so you can walk right up to it for at least an hour or so either side of low tide.   And the tidal pools around it are full of interesting sea creatures – anemones, sea stars, crabs, limpets and chitons. 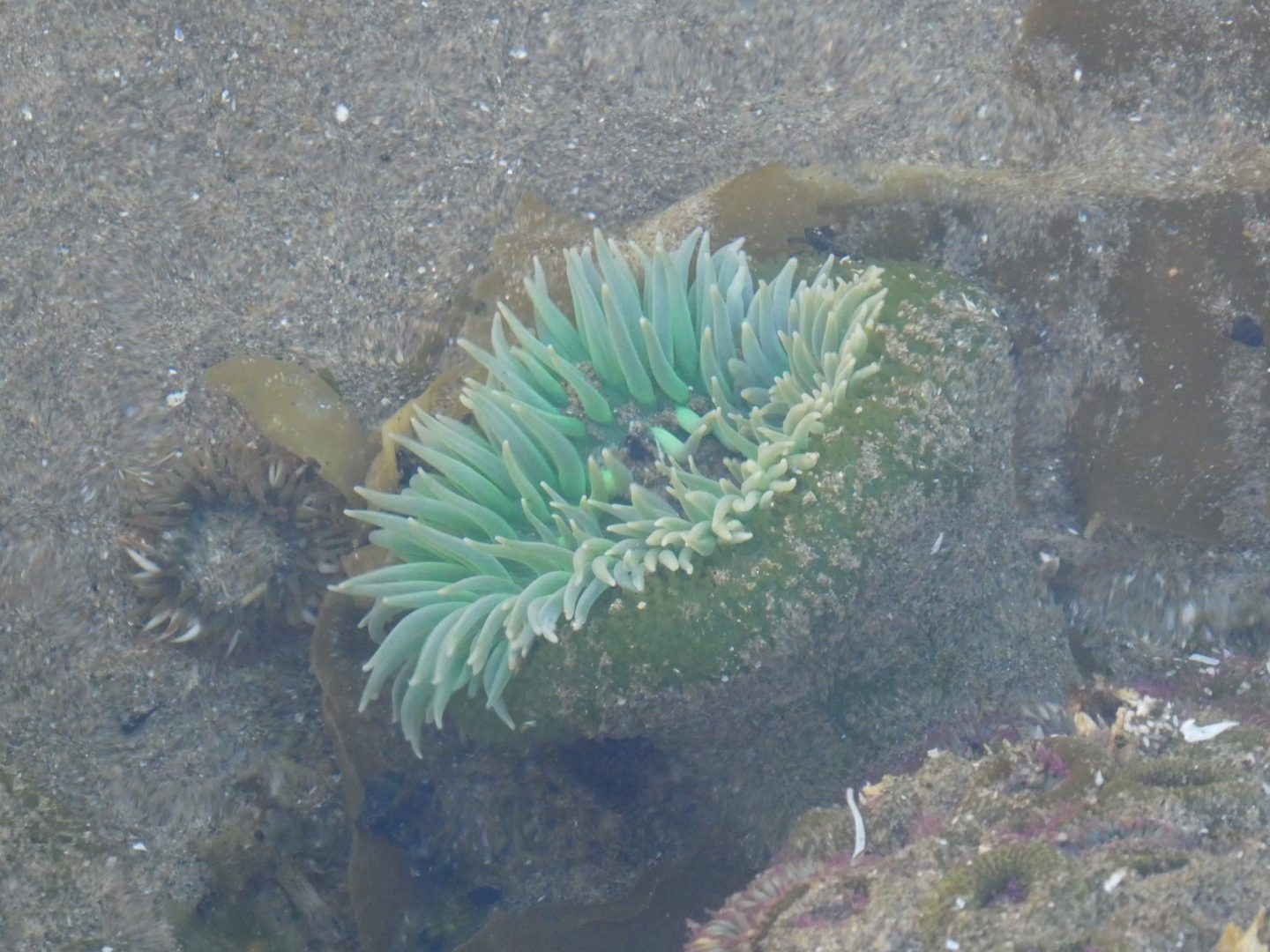 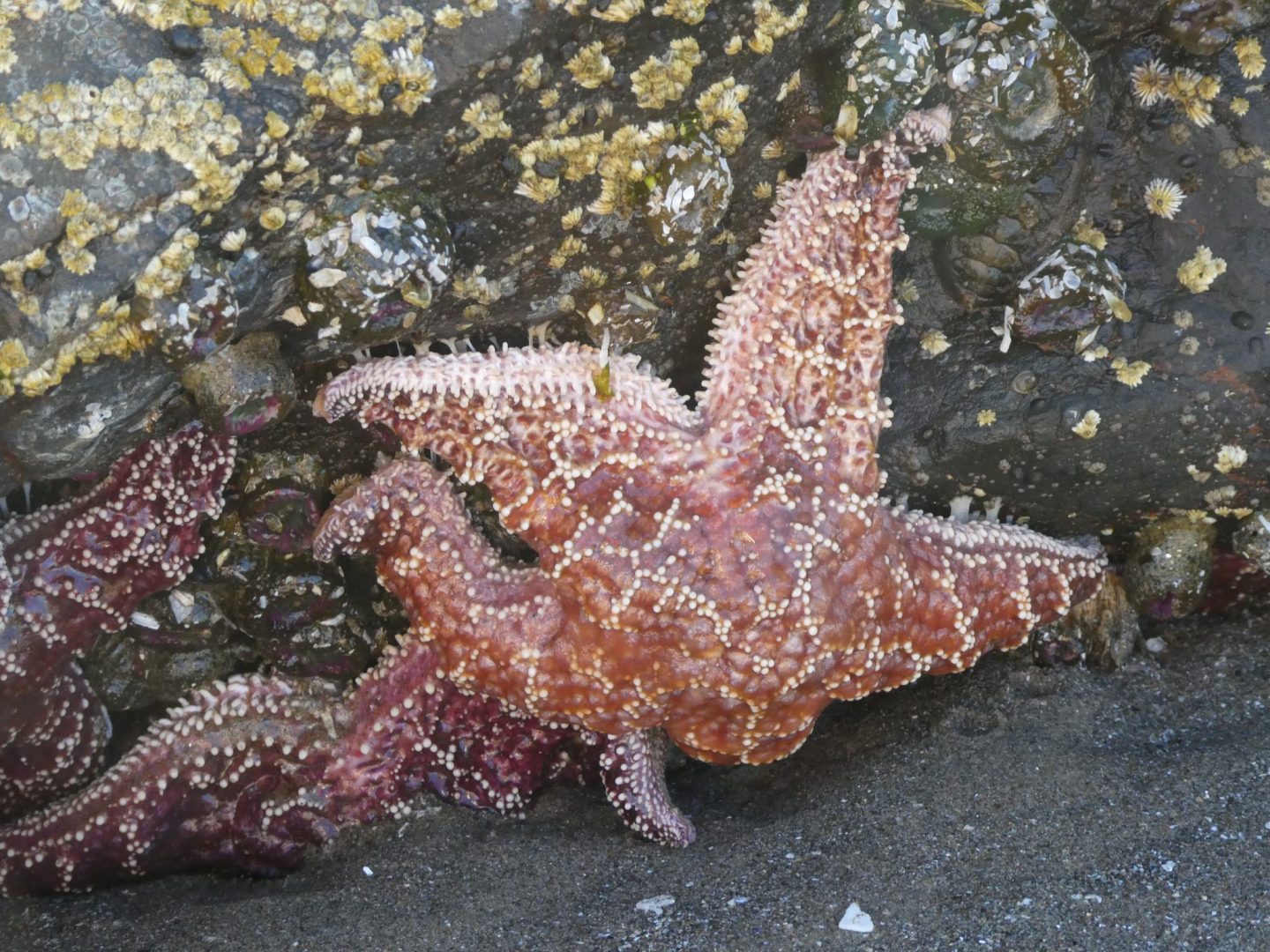 It’s also a breeding ground for terns and crested puffins, so even though it’s accessible, climbing onto the rock is prohibited.  Not a problem – just take a walk on the stunning beach instead where smaller basalt uplifts dot the landscape. 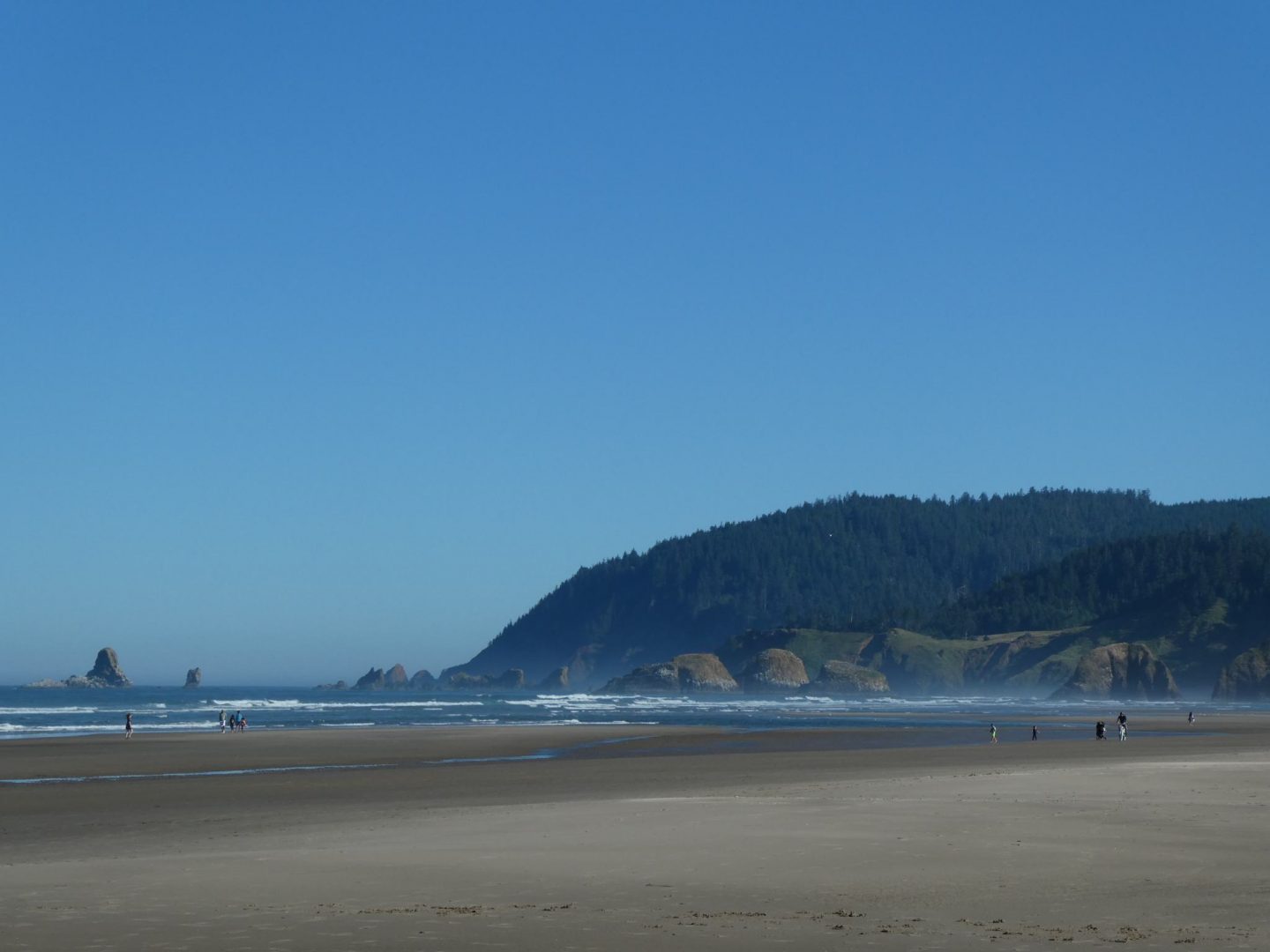 The headland you can see is Ecola State Park.  Ecola might sound like a mutant viral cross between ebola and ecoli, but actually it is derived from the word ‘ekkoli’, the local First Nations word for whale.  On their expedition across America, Lewis and Clarke stopped north of here.  Tired of elk and dog meat, and hearing stories of a ‘monstrous fish’, Lewis and others had a native guide take them to Cannon Beach.  It was the furthest west they travelled on the whole journey, and on arrival after several days trekking what they found was a giant skeleton of a whale being stripped and boiled down for blubber.

Here’s the view from the top looking back toward Haystack Rock. 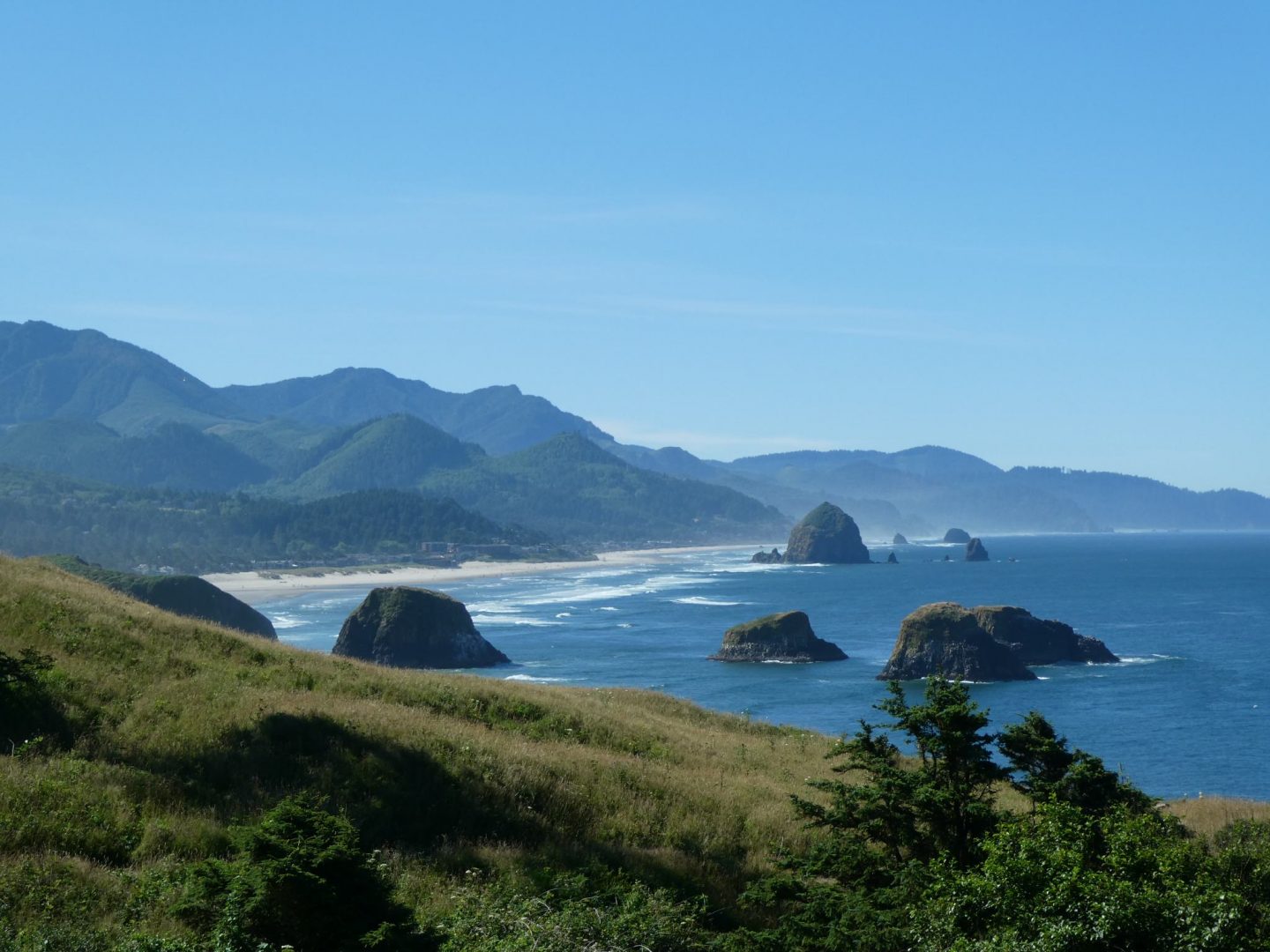 If it looks vaguely familiar maybe that’s because the fairground scene toward the end of Kindergarten Cop was filmed here.

From Ecola a trail runs up and through the park to Indian Head.  It used to follow the cliffs but a landslide demolished a big section. 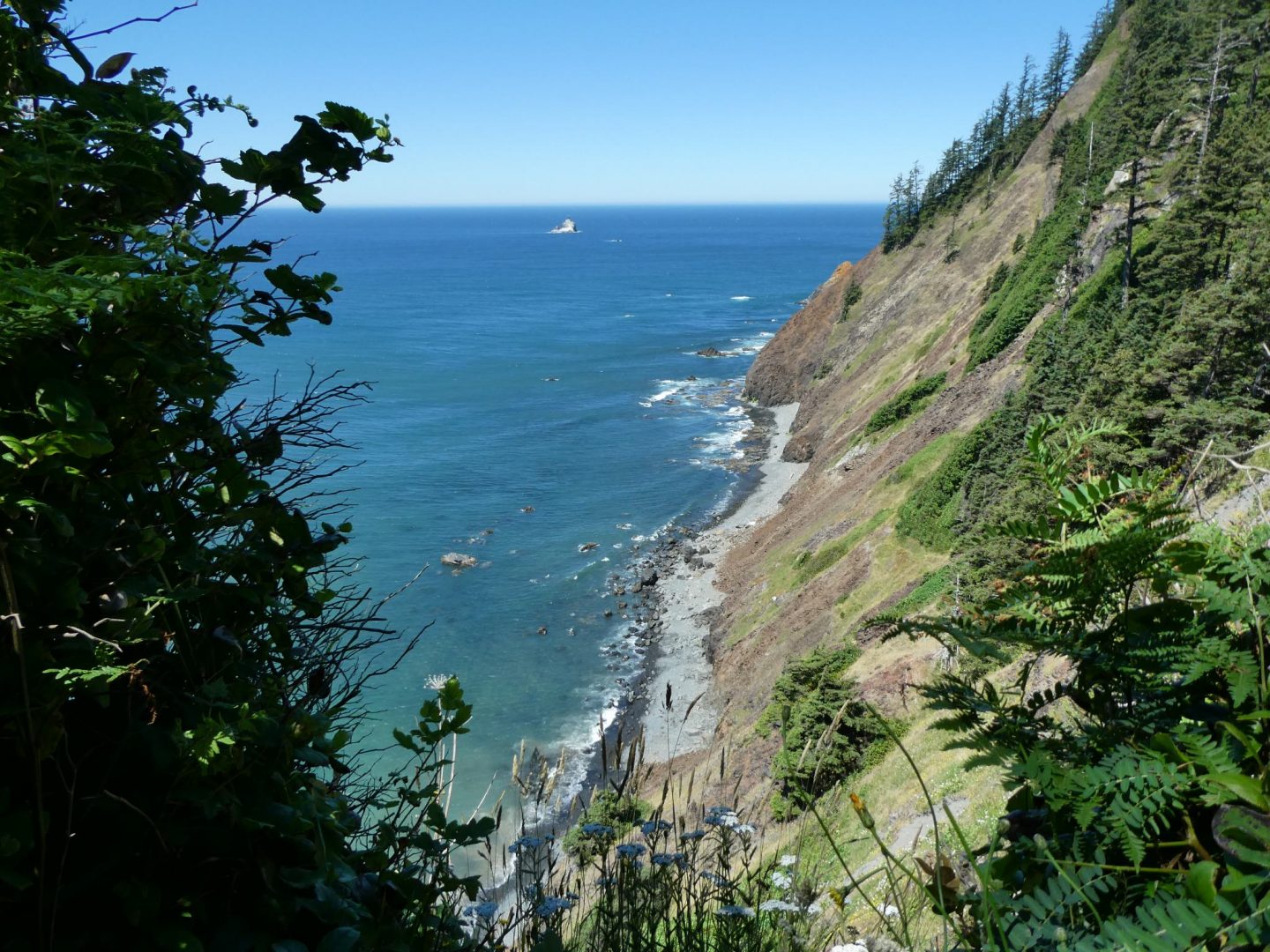 After more than two years closed, the trail has re-opened but is re-routed inland through the forest. 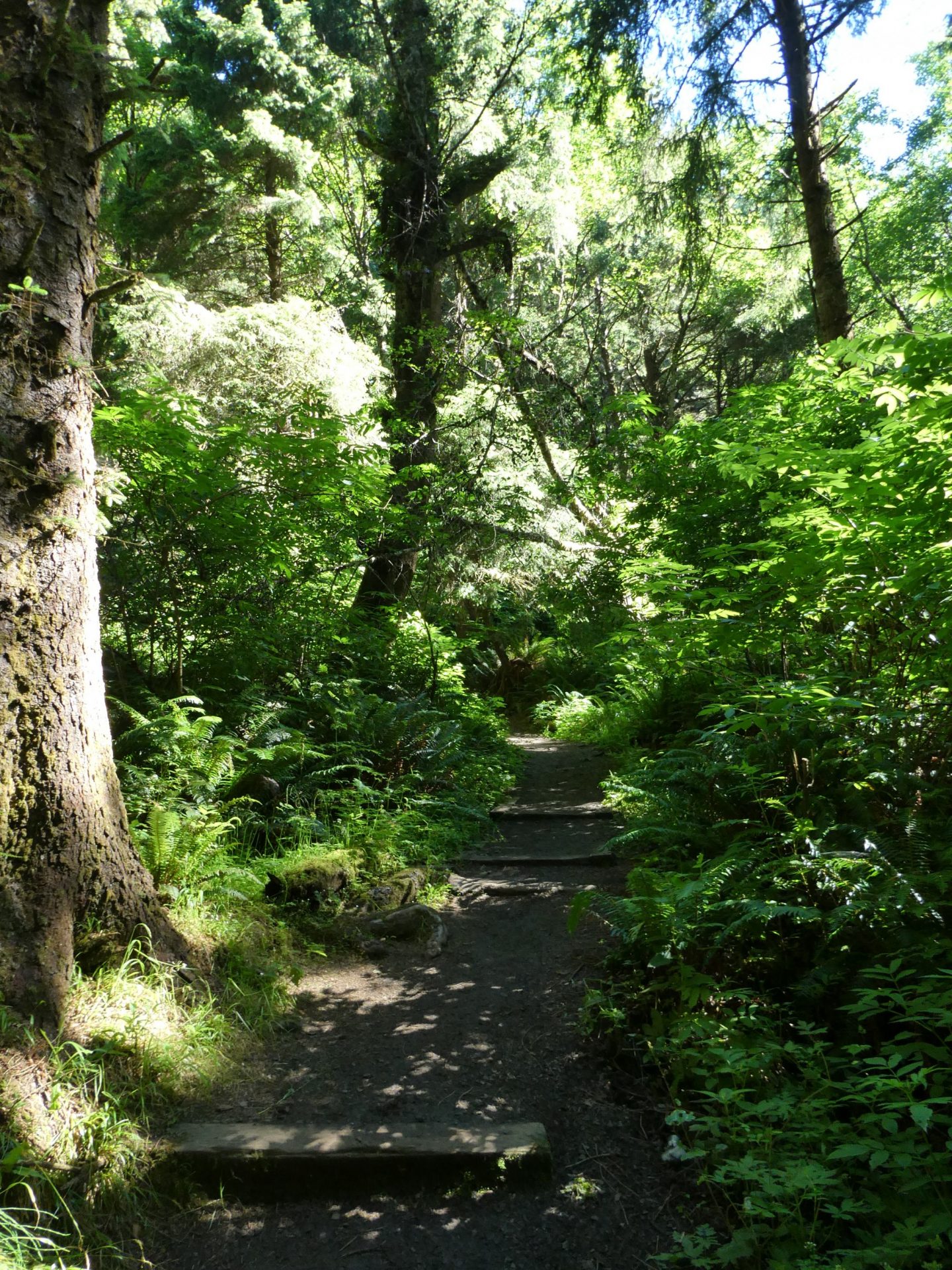 It doesn’t have sea views but some of those trees are mighty big. 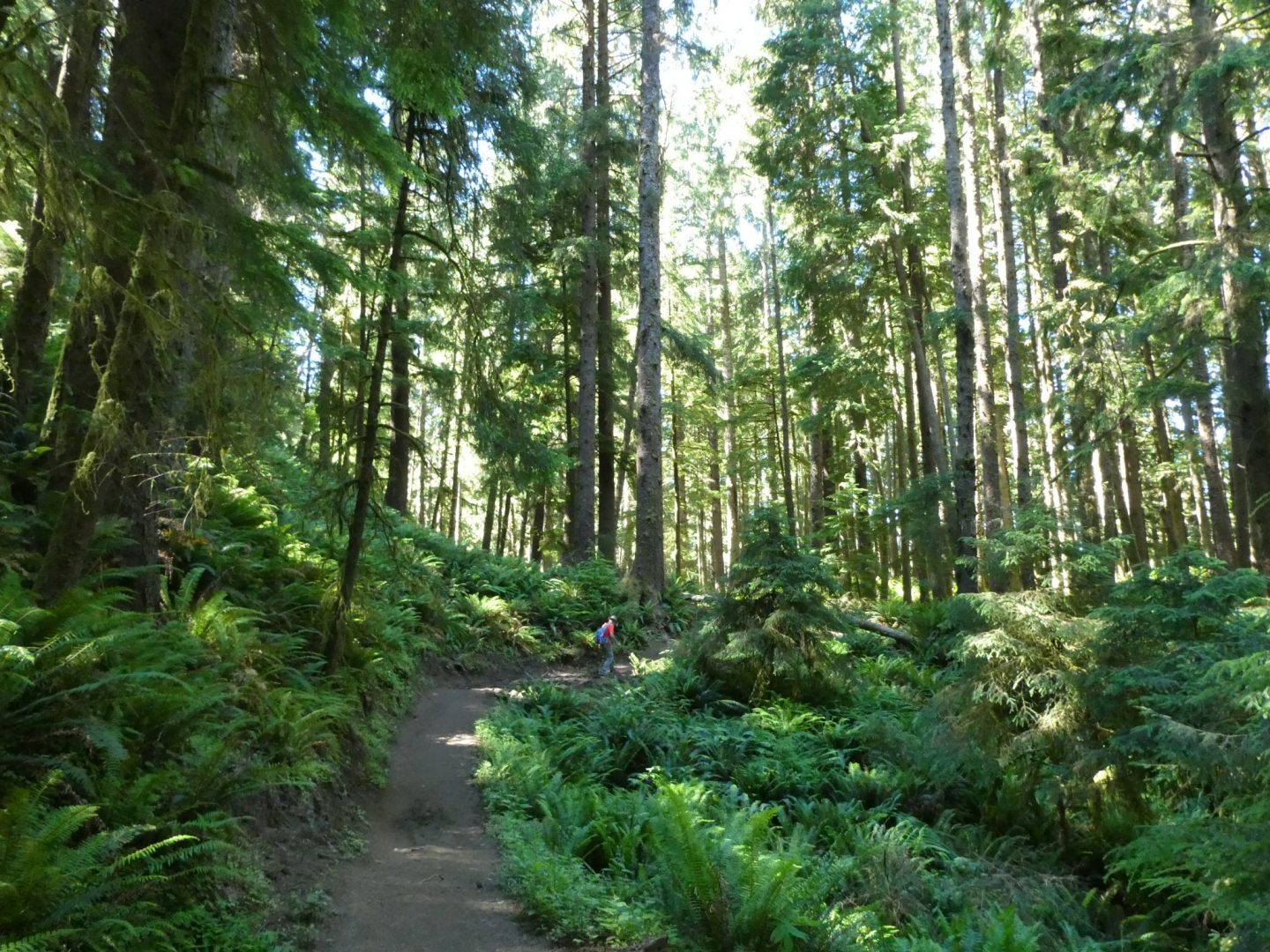 Eventually it re-joins the old trail to the headland overlooking Indian Beach. 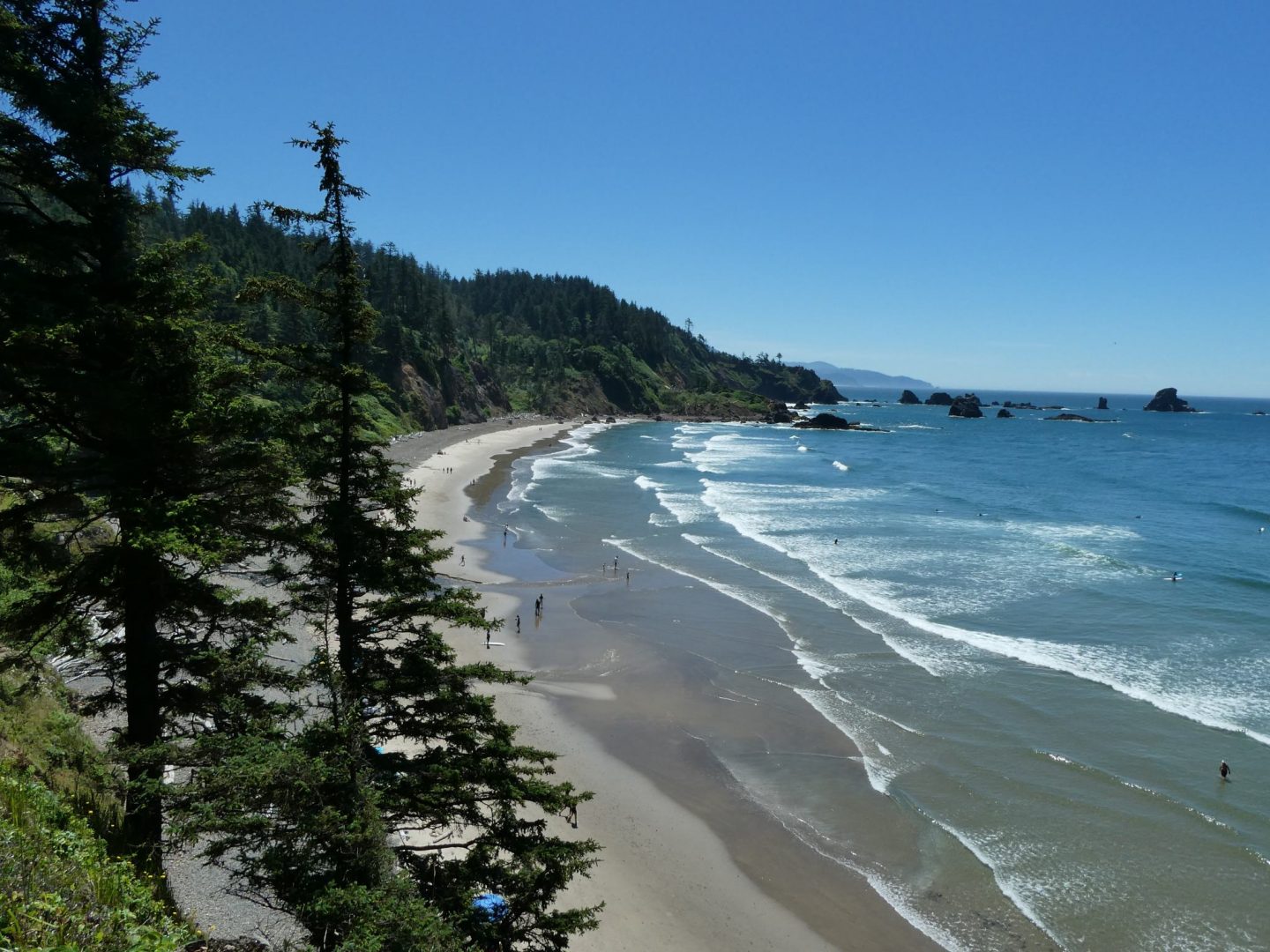 The beach was used as a double for Bells Beach in Australia in the original 1991 movie Point Break.  This simply confirms the suggestibility of cinema – anyone who’s been to Bells knows the dunes behind the beach are grassy, there are no tall trees let alone the spruce and fir trees here, and there are no basalt sea stacks jutting out of the ocean close to shore.  But you see them all in the scene where Keanu Reeves, after tracking Patrick Swayze to Australia, fights with him in the rain on Bells Beach.

So, zero for movie authenticity but full marks for a beautiful beach and a perfect day.

From Indian Head we continued onto the Clatsop Loop, 4 1/2km through forest up to a view point looking out to Tillamook Lighthouse.  Nicknamed ‘Terrible Tilly’, the lighthouse was commissioned in 1878 on a lump of basalt rock offshore from Tillamook Head and took more than 500 days to complete due to the difficult location. 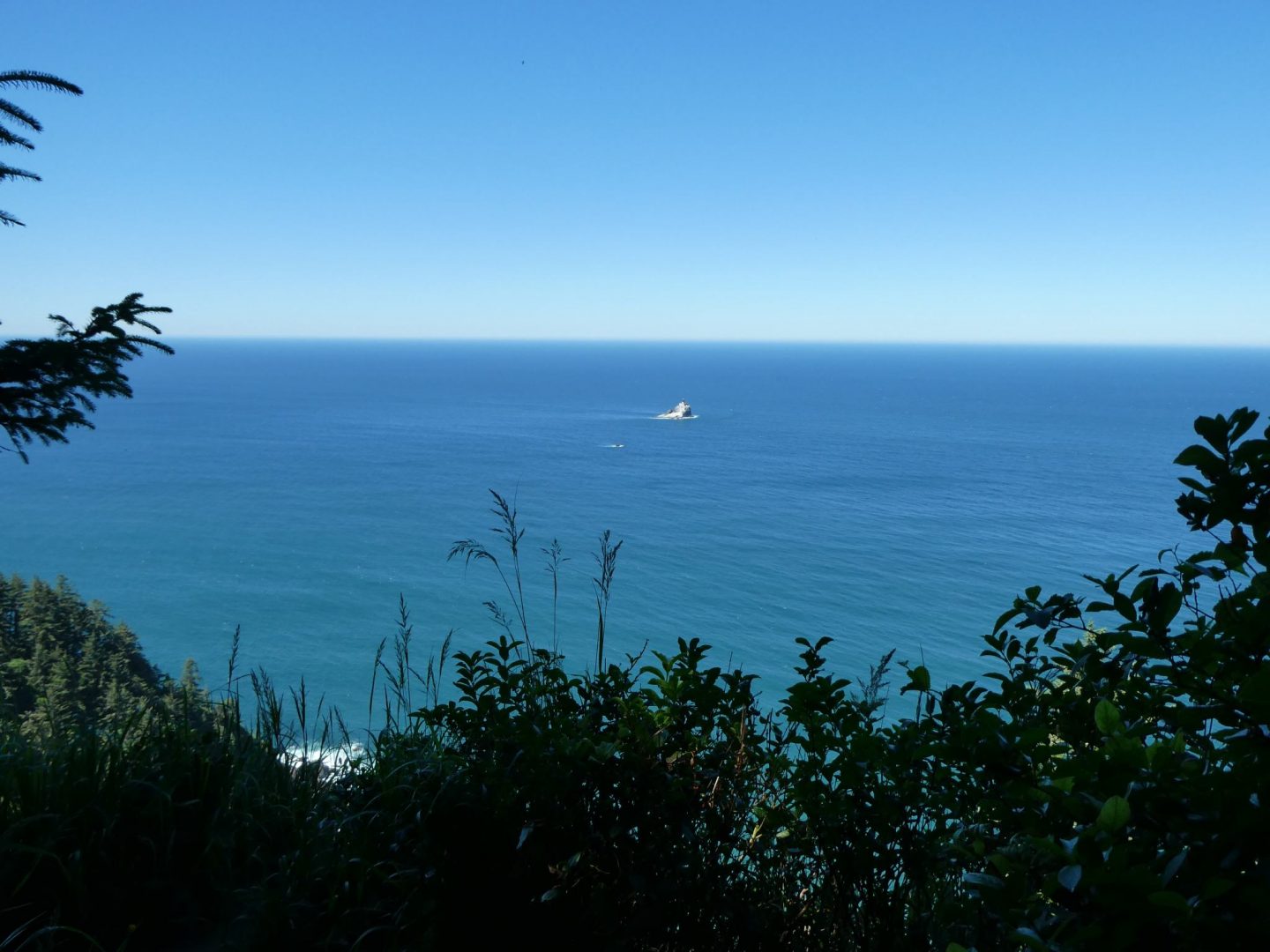 Local First Nations people avoided the rock, believing spirits inhabited hollow tunnels underneath.  They refused to go there so workers from elsewhere had to be brought in to build the lighthouse.  Perhaps they were right.  The lighthouse’s history isn’t a happy one.  A surveyor was swept to his death before the project even started.  Just before completion, a barque struck the rock and all 16 sailors on board died.  The lighthouse operated for only 77 years.  Several times, men stationed there almost died of starvation because weather conditions made it impossible to provision them.  During the regular ferocious storms which assail this coast, the lighthouse and entire island were submerged.  At least two lighthouse keepers went mad. 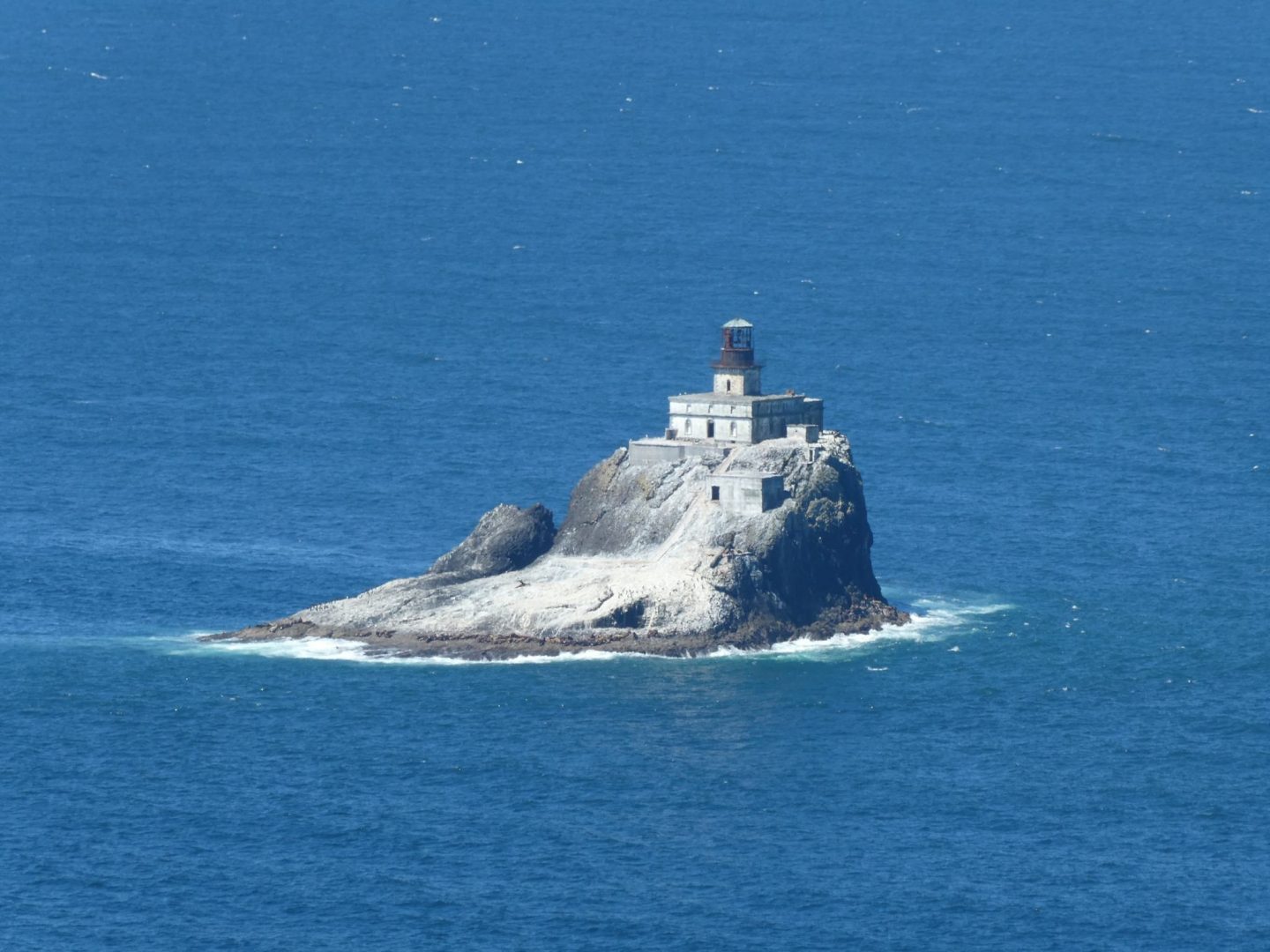 Decommissioned in 1957, it has passed through several private hands.  The current owner bought it in 1980 for $US50,000 and spent a stack of money on the much deteriorated structures intending to establish a columbarium, a place to store cremated remains.  She planned to sell 300,000 niches but sold only 31.  She’s currently being sued by a number of disgruntled customers.  The urns don’t withstand the marine environment. Boats can’t land so relatives can’t visit their loved ones as they say they were promised.  On her own admission, last time she visited the island her helicopter couldn’t take off because there were too many sea lions blocking the way.  It’s now listed for sale at $US6.5m.  Good luck with that.