From Seaside we drove north to the Olympic Peninsula,  the northwestern most point of the contiguous United States and home to the spectacular Olympic National Park.  The park protects nearly a million acres of pristine wilderness across a diversity of ecosystems:  temperate rainforest to the east, the rugged Pacific coast to the north and west, and sub-alpine forest and wildflower meadows inland.  It was designated by UNESCO as an International Biosphere Reserve in 1976 and declared a World Heritage Site in 1981.

We reached the peninsula via the Astoria-Megler Bridge.  At 6.5km, it’s the longest continuous truss bridge in North America.

After crossing the bridge we headed east to begin a counterclockwise circumnavigation of the peninsula.

The eastern shoreline faces Hood Canal, a 100km long glacier-carved saltwater fjord.  The mountainous interior creates a rain shadow and a ribbon of temperate forest along the eastern flank of the peninsula.  Small communities dot the shore, with lots of holiday homes ranging from shacks to top end luxury.  We stayed in a bungalow perched above the water with a great deck looking out over the canal. 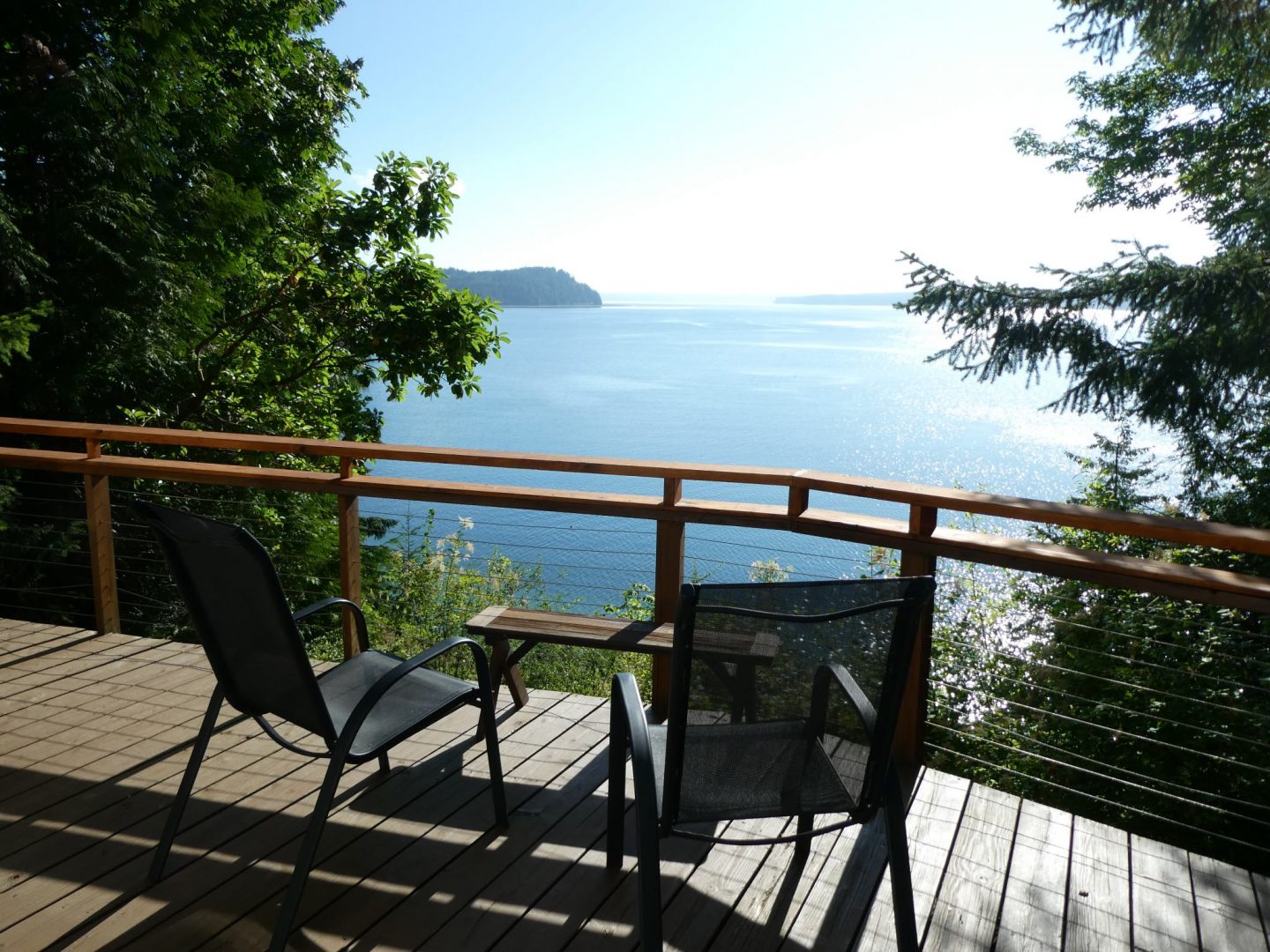 Steps led down to a private cove with oysters for the harvesting on the rocks (if you don’t mind shucking them yourself).  From the deck we spotted seals heading up the canal in search of a feed and the air was so clear we could see all the way to the snowbound Cascade Mountains, over 120km away. 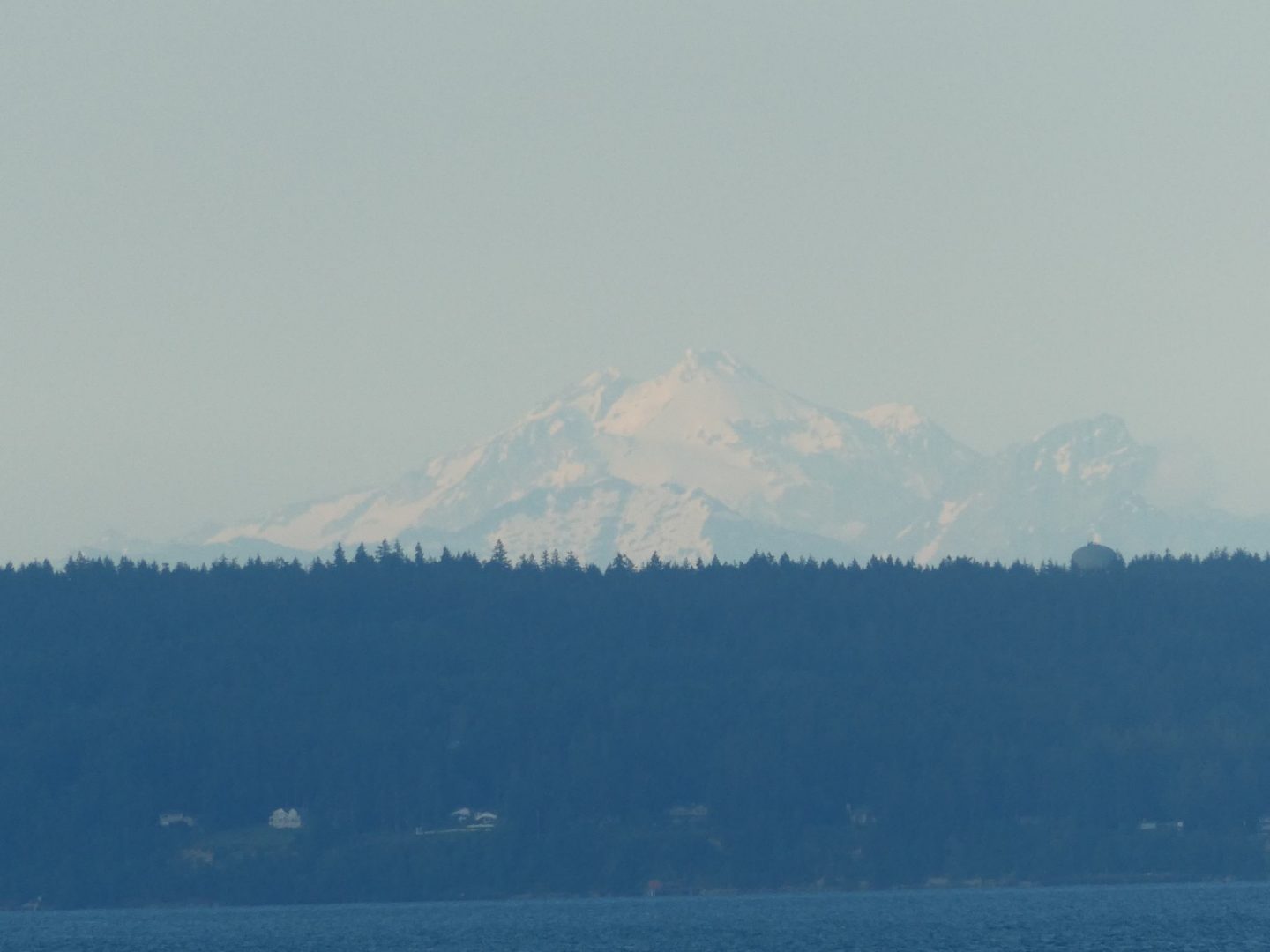 We spent a bit of time just gazing at the sea but also somehow found the motivation for a 13km out-and-back hike to Lena Lake.  Beautiful. 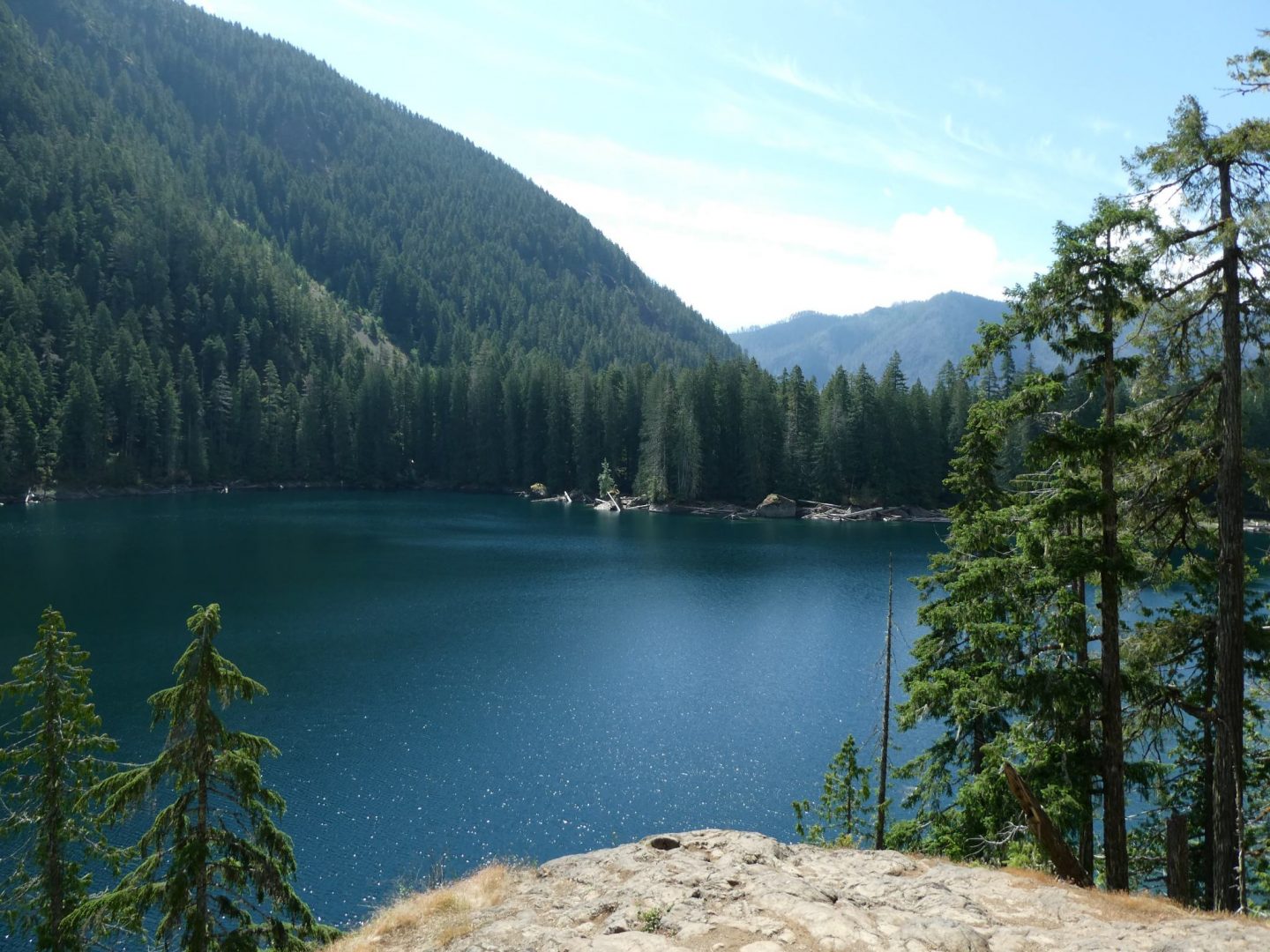 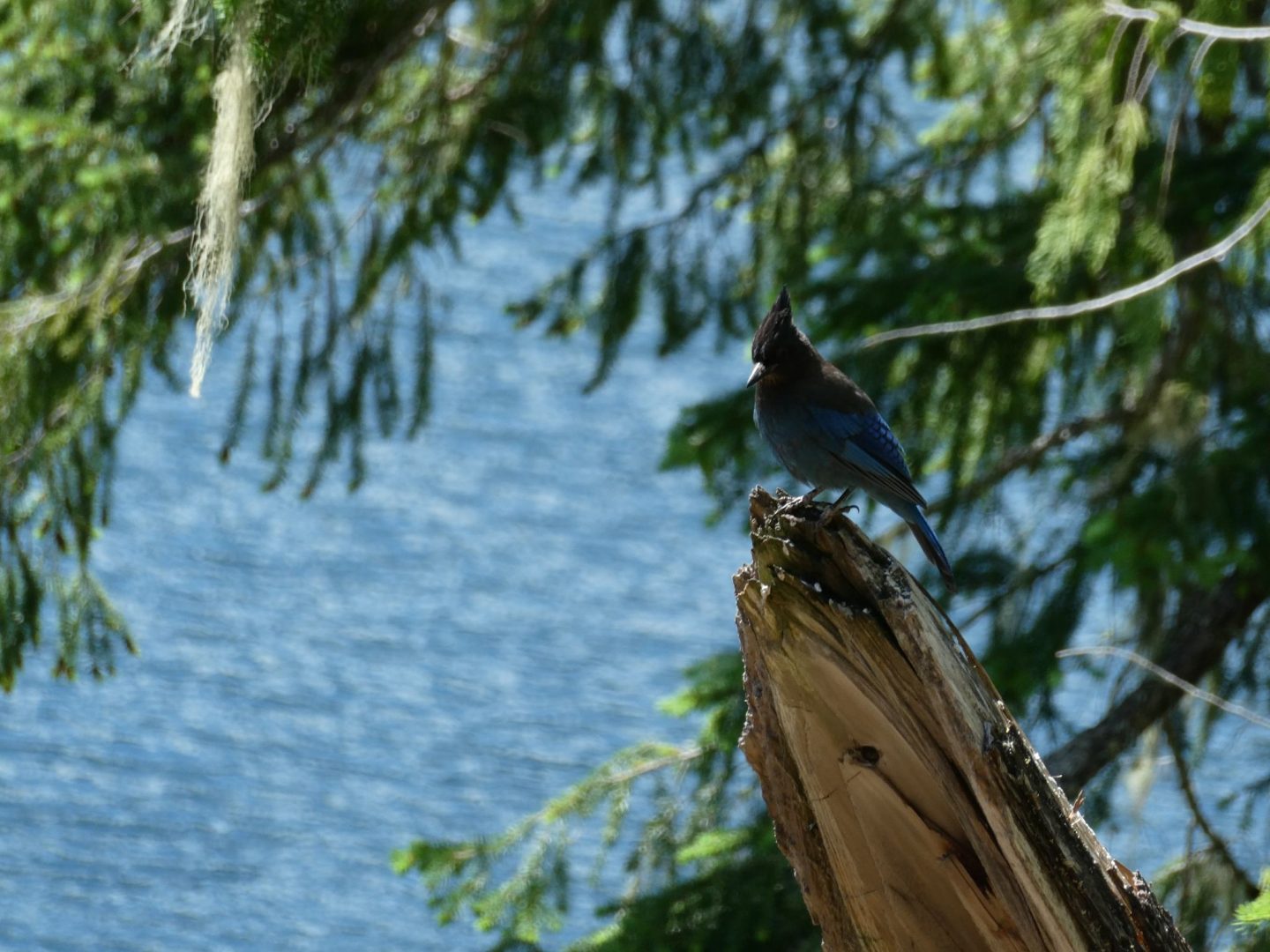 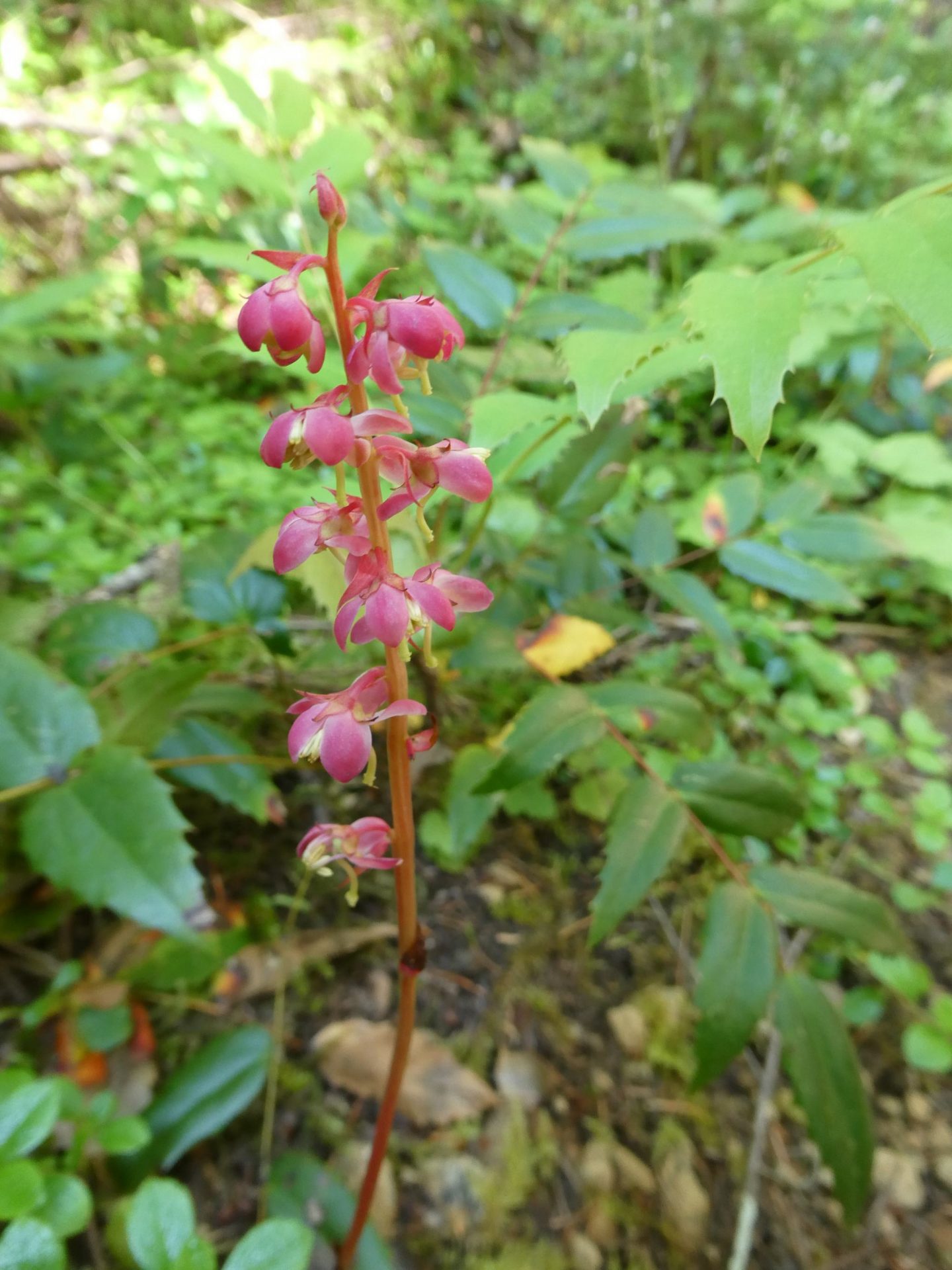 Heading north, it’s a lovely drive up the east coast to the most northeastern point of the peninsula and the town of Port Townsend.

Founded in the 1850s, the safe harbour made it suitable for docking large ships for the transport of timber and other goods.  By the 1870s it had earned the nickname “the City of Dreams” as investors speculated it would become the largest port on the west coast of the US and the northwest terminus for rail lines from across the nation.  Large numbers of homes and commercial buildings were built in the ornate Victorian style.  The population boomed five fold from 900 in 1880 to 4,500 in 1890.

But the depression of the 1890s turned dreams to nightmares.  There was no capital to build the anticipated railway.  Shipping left from ports closer to where the existing rail ended – Seattle and Tacoma.  The town stagnated.  But because it crashed so quickly and little happened to prompt redevelopment, very few of the Victorian era buildings were demolished.  They just languished in varying states of decrepitude for almost a century until their historic value was recognised.  The Port Townsend Historic District was designated a National Historic Landmark in 1977.  Regeneration gathered pace in the 1990s.  Now spruced up and very much on the tourist map, the town and its old buildings are enjoying a second life. 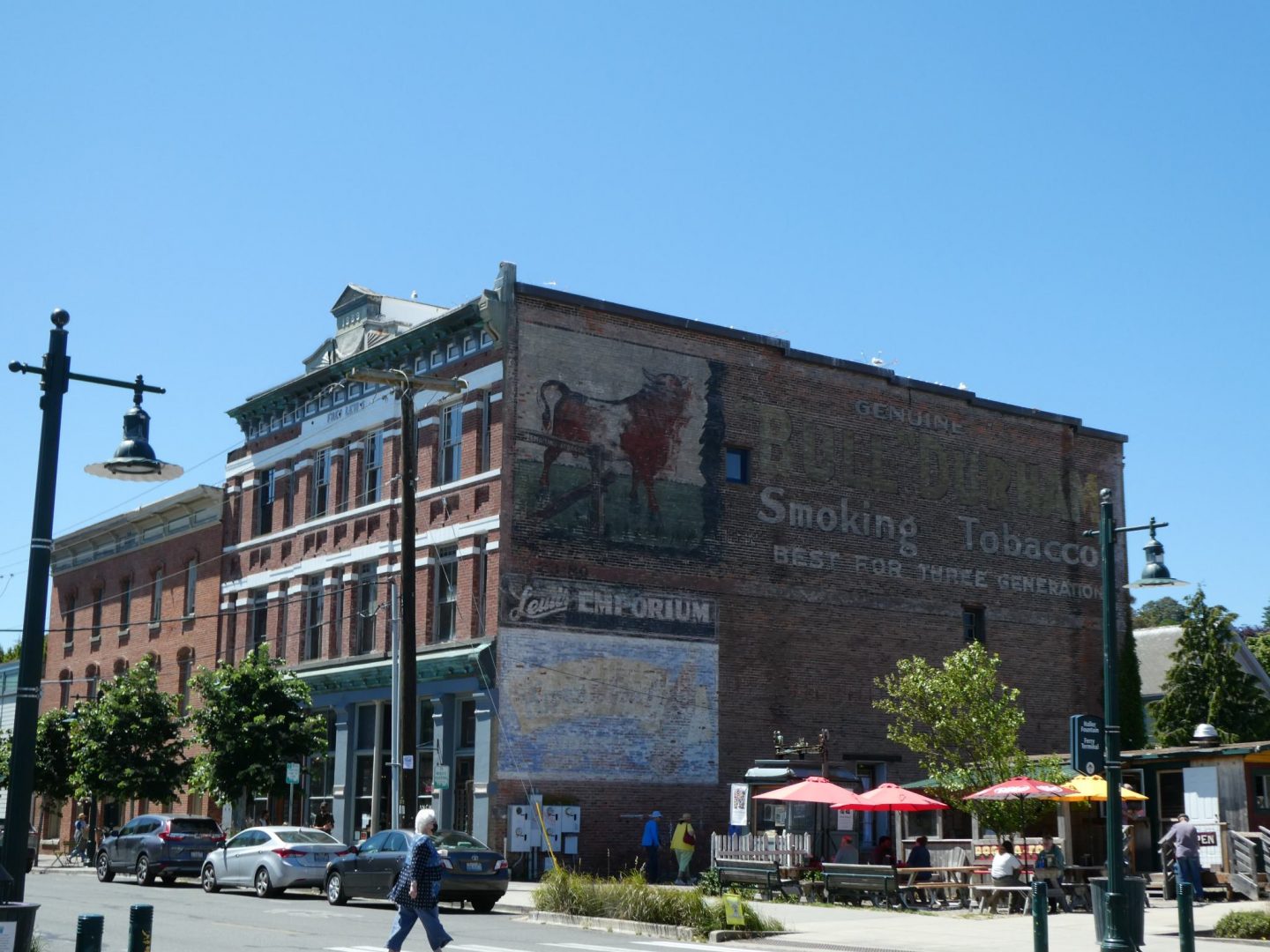 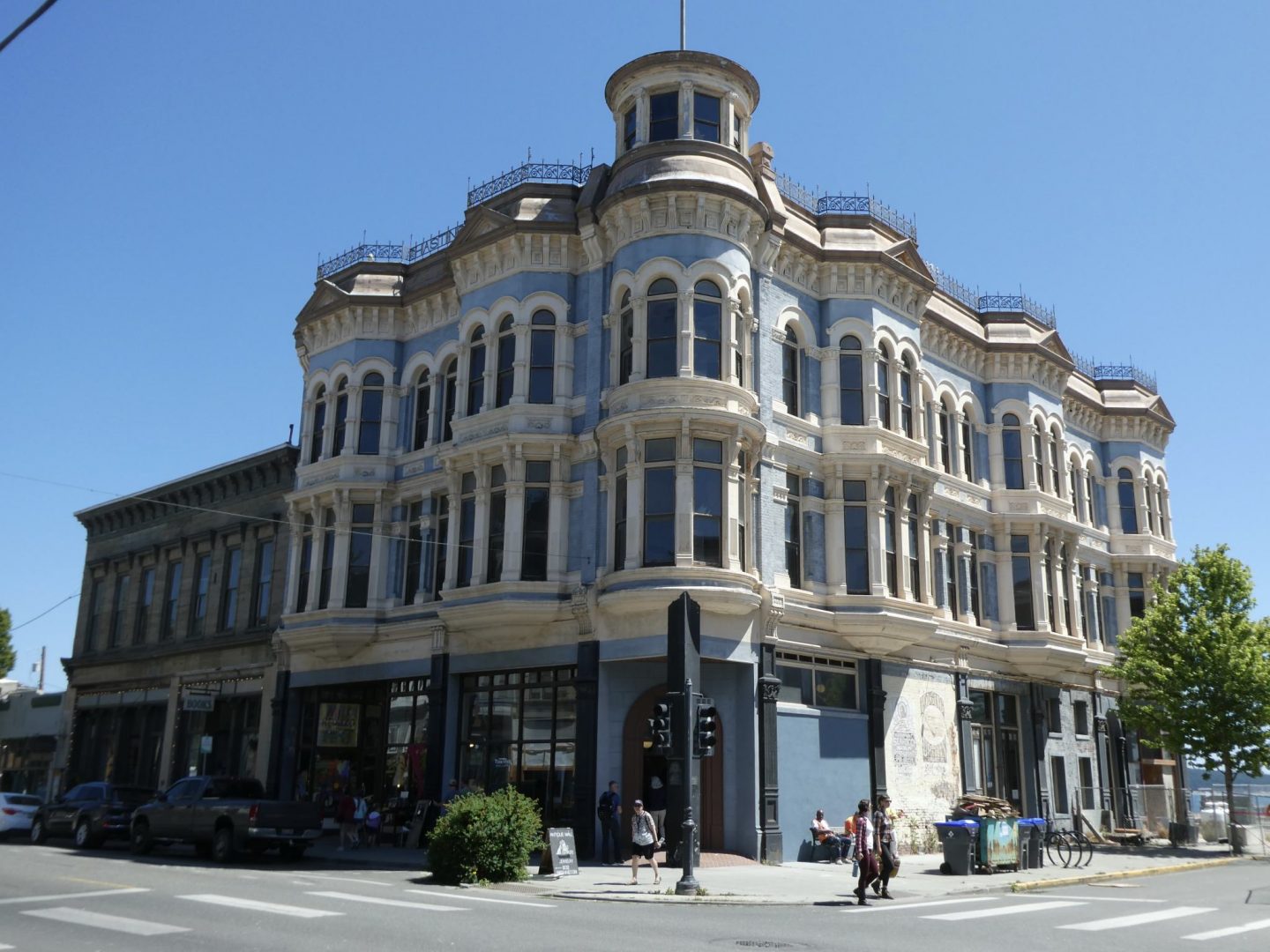 Along the way the town had enjoyed a brief reprieve when Fort Worden was established in 1902 on a bluff nearby.  The fort was an artillery base designed to address any potential threat of attack from nearby Vancouver Island in Canada, should an enemy establish a footing there.  It was also part of a “Triangle of Fire” – three forts protecting the entrance to Puget Sound from an invading navy seeking to attack Seattle and points south.

The fort was an active US army base until 1953 although from the end of WW11 it had only been used as an administration centre.  It’s now the Fort Worden Historic Park, beautifully maintained and home to a small artillery museum run by wonderful volunteers who entertain visitors with comprehensive tours explaining the fort’s history.  It was also used as the military base in the outdoor scenes of the movie An Officer and a Gentleman. 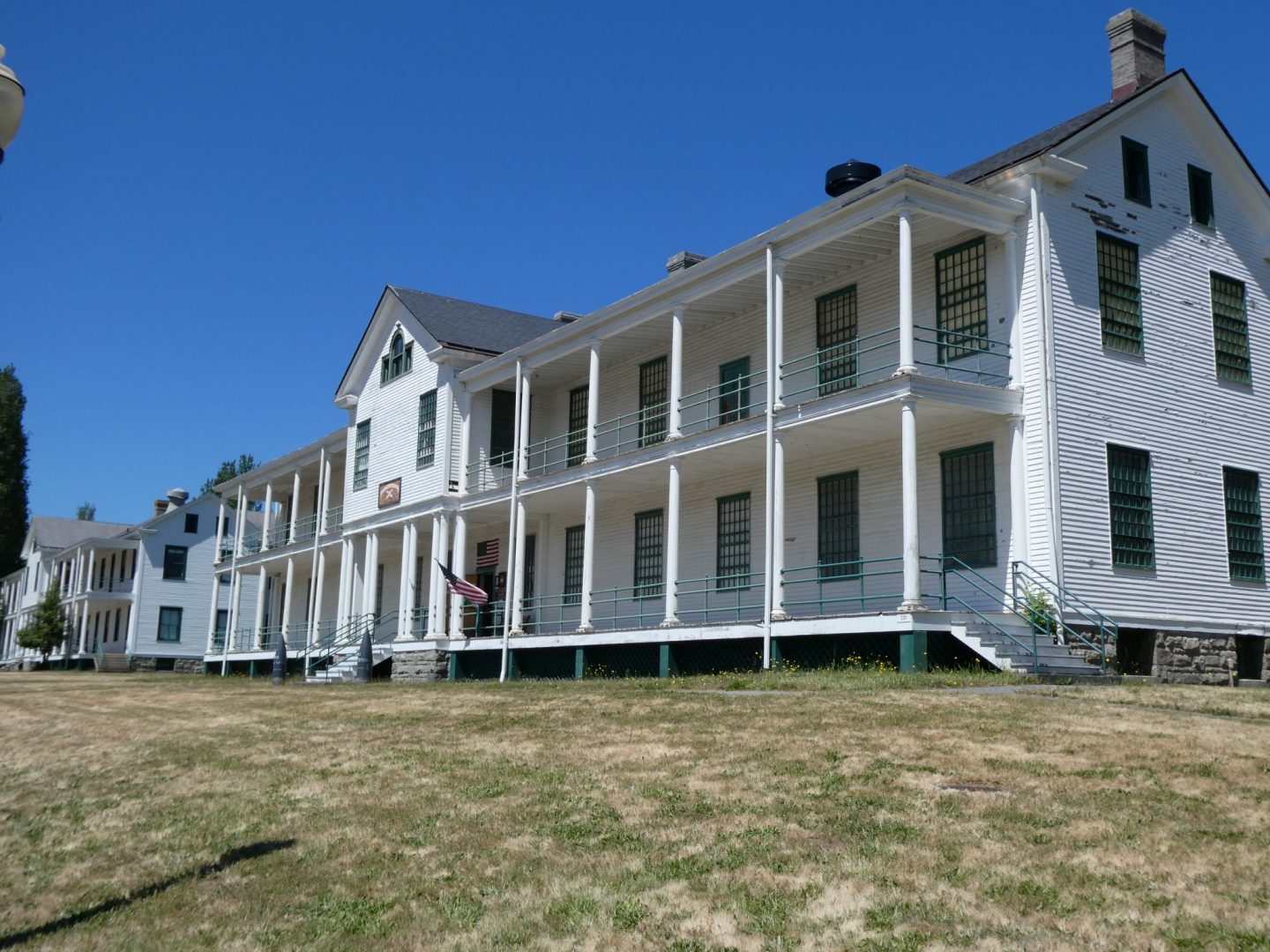 Next we headed to the northwest of the peninsula where the landscape changed dramatically.  Weather and water sweep in from the Pacific, and those mountains that create the rain shadow over the east mean it all pours down on the west coast.

At Rialto Beach there’s a highly recommended walk along the shore for a few kilometres to a rock arch jutting into the sea.  But did we mention it rains a lot on this coast?  Rialto was atmospheric in the mist and rain, but it was no day for beach walking. 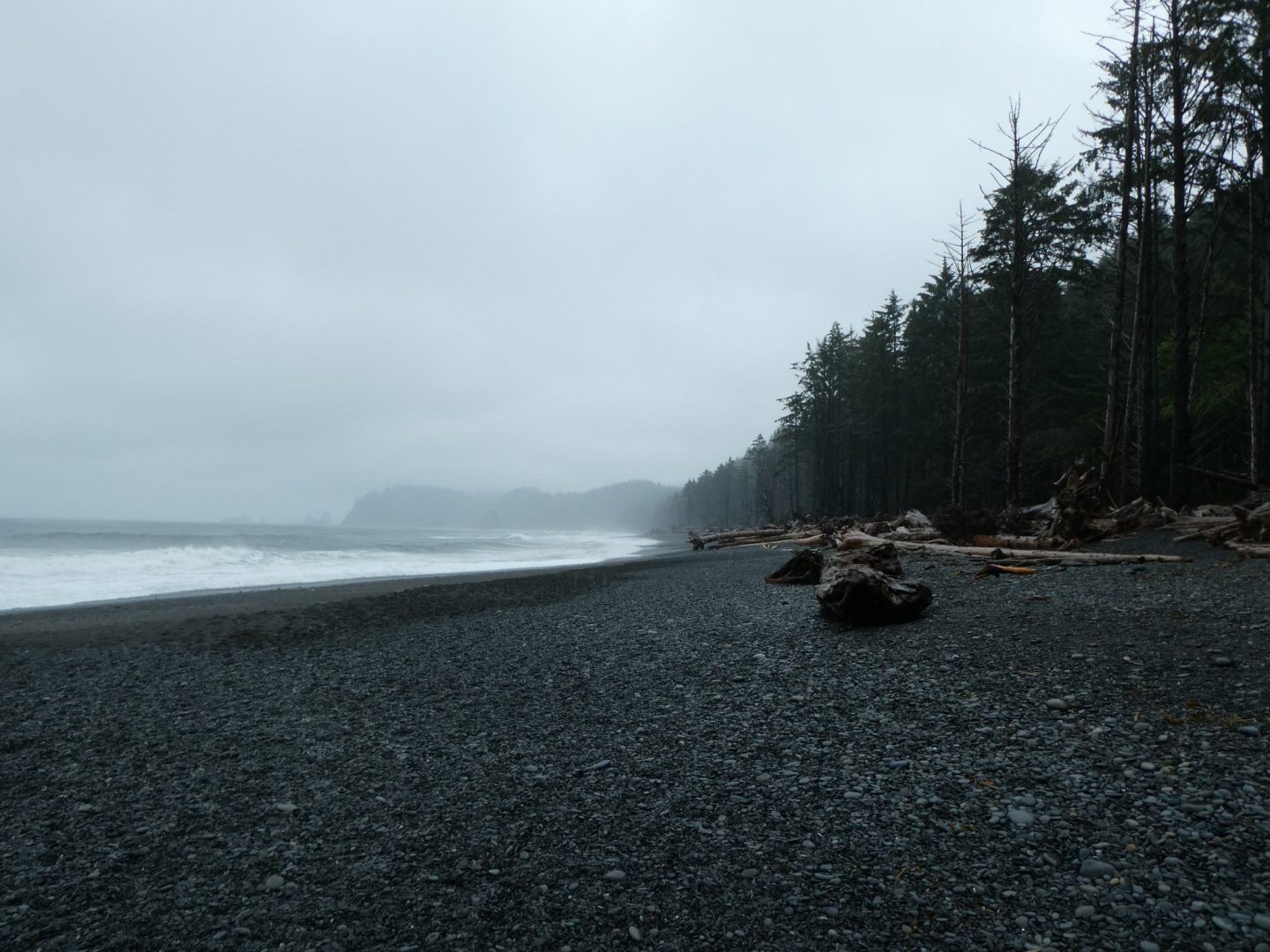 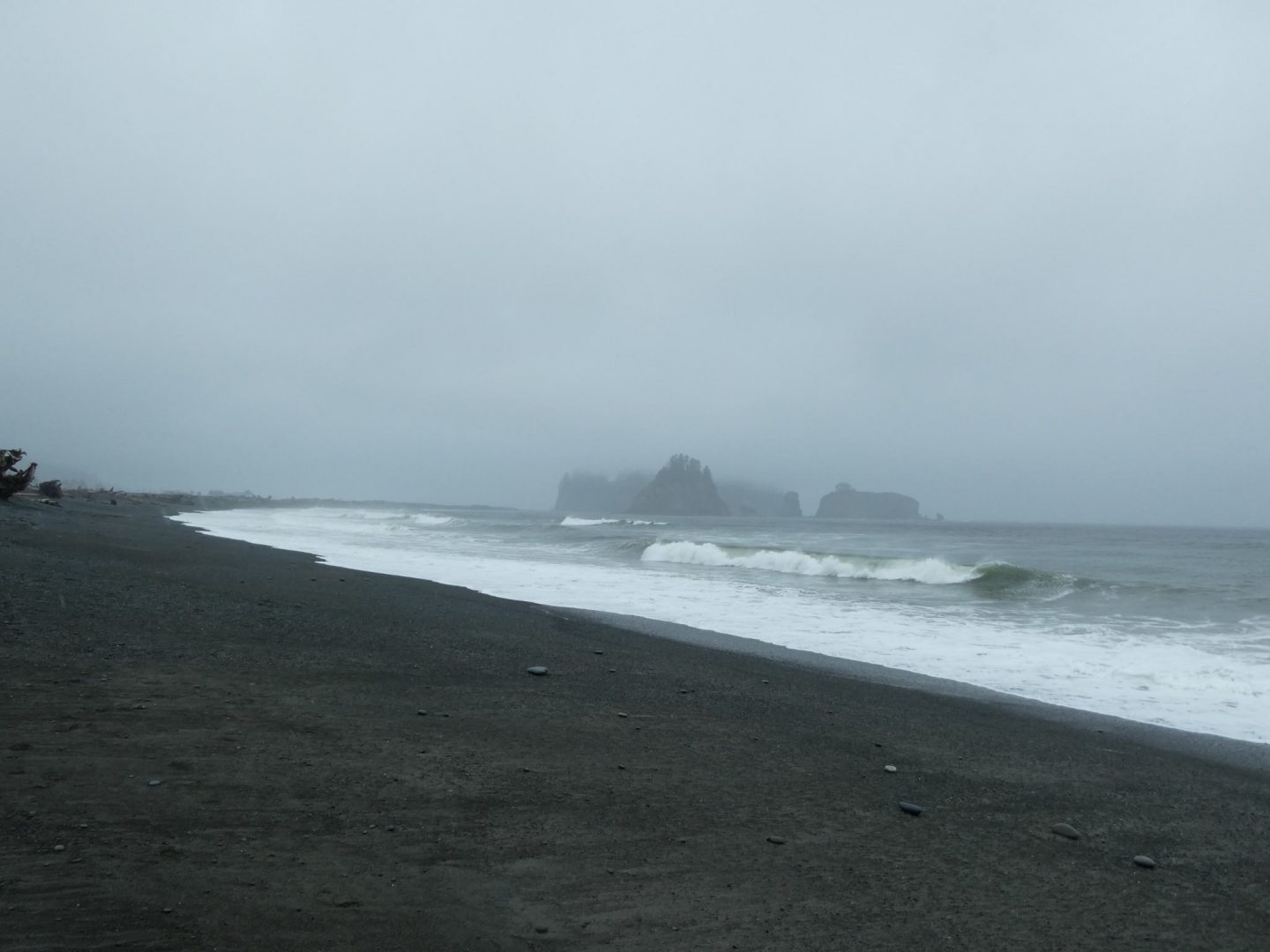 Huge Sitka spruce trees felled by storms and washed downriver are sucked out by the ocean and then thrown back up on the beach. 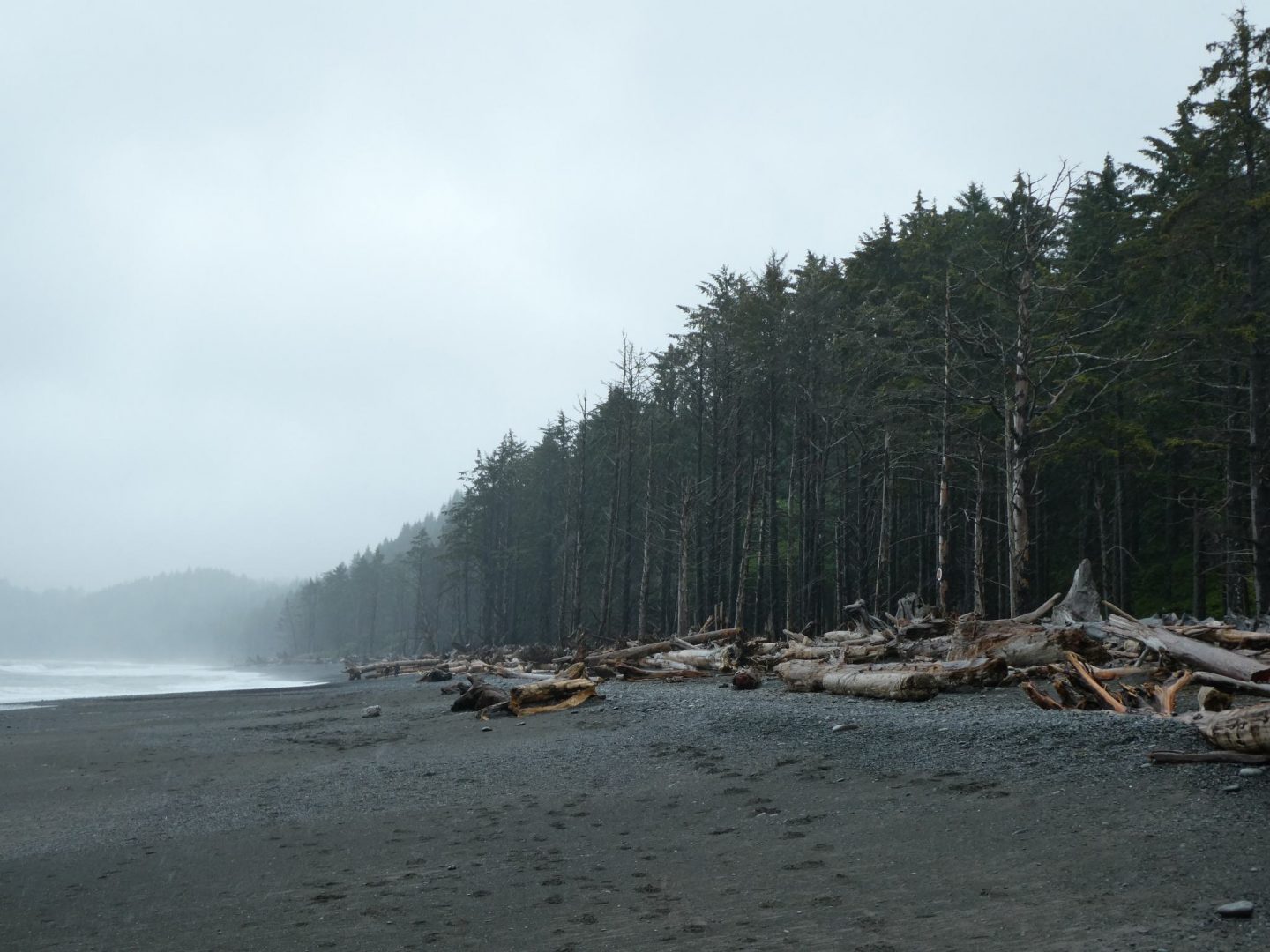 We continued south, passing through the town of Forks.  Few would have heard of Forks, let alone been there, until author Stephenie Meyer set the wildly popular Twilight series of books here.  She’d never been there either, but imagined it was the sort of cloudy, rainy place that vampires would like.  Well, we don’t know anything about vampires’ weather preferences, but cloudy and rainy is certainly a good description.  Before the books and subsequent movies, Forks was an unremarkable, utilitarian town servicing the timber industry.  Now it’s an unremarkable, utilitarian town servicing the timber industry and being trawled by fans hoping to spot a vampire.  We didn’t stop.

We did stop further south at the Hoh Rainforest to walk the Hall of Mosses trail.  Yes, it’s as damp as it sounds but thankfully the rain had stopped.  A sign at the visitor centre reports the area gets a whopping 132 inches – that’s 3.35 metres – of rain per year.  Six times the rainfall in London, five times that of Melbourne. 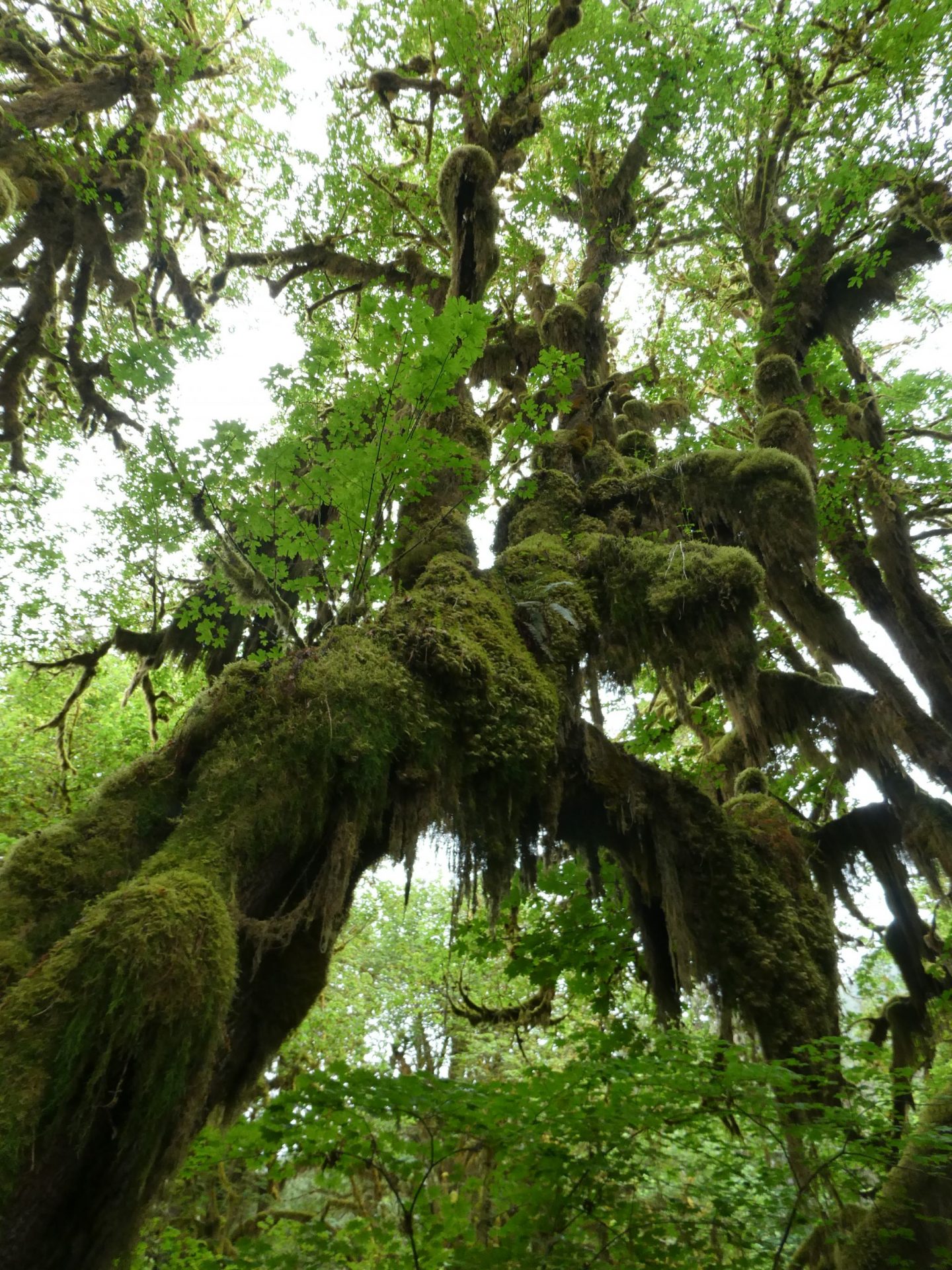 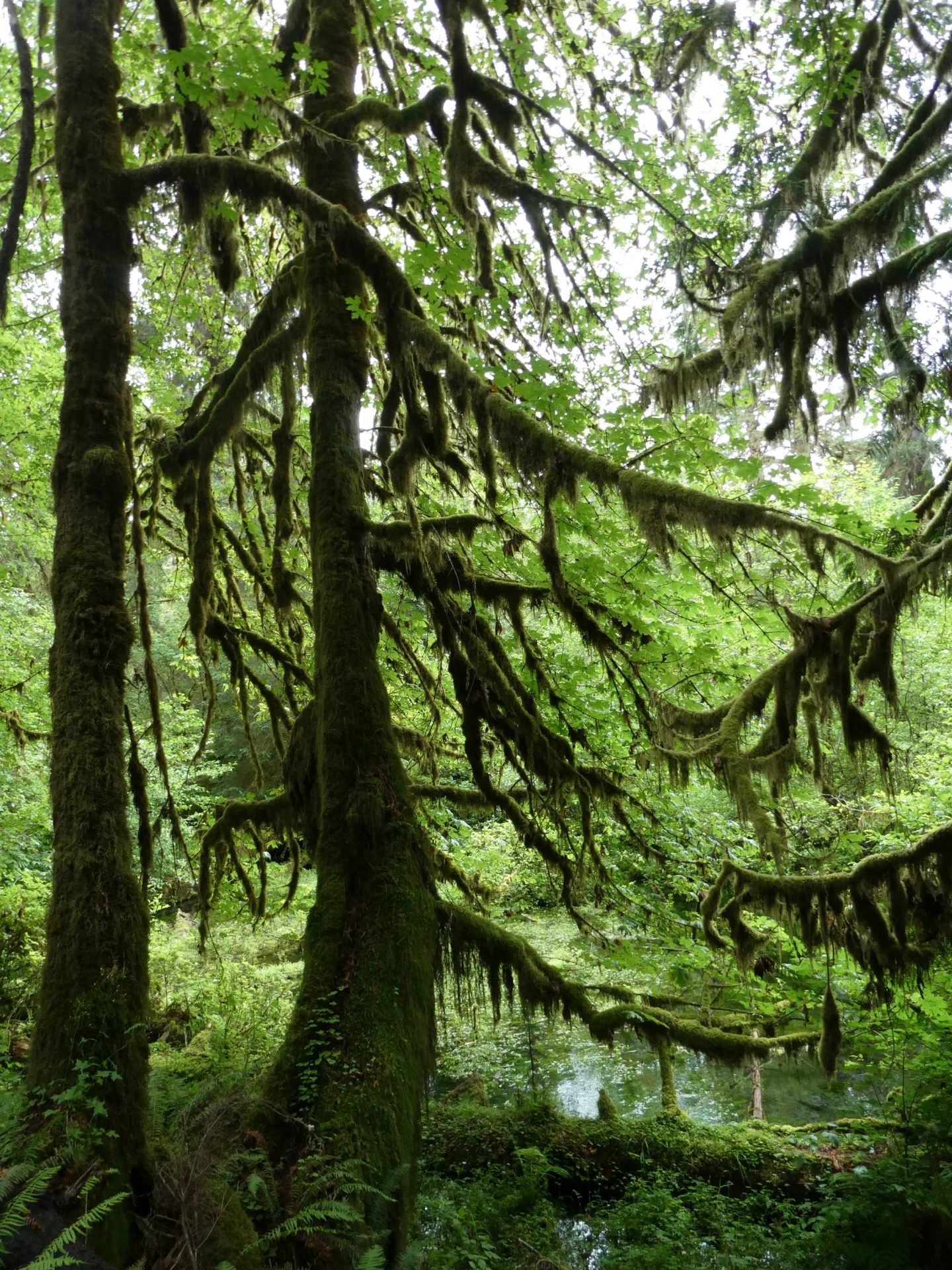 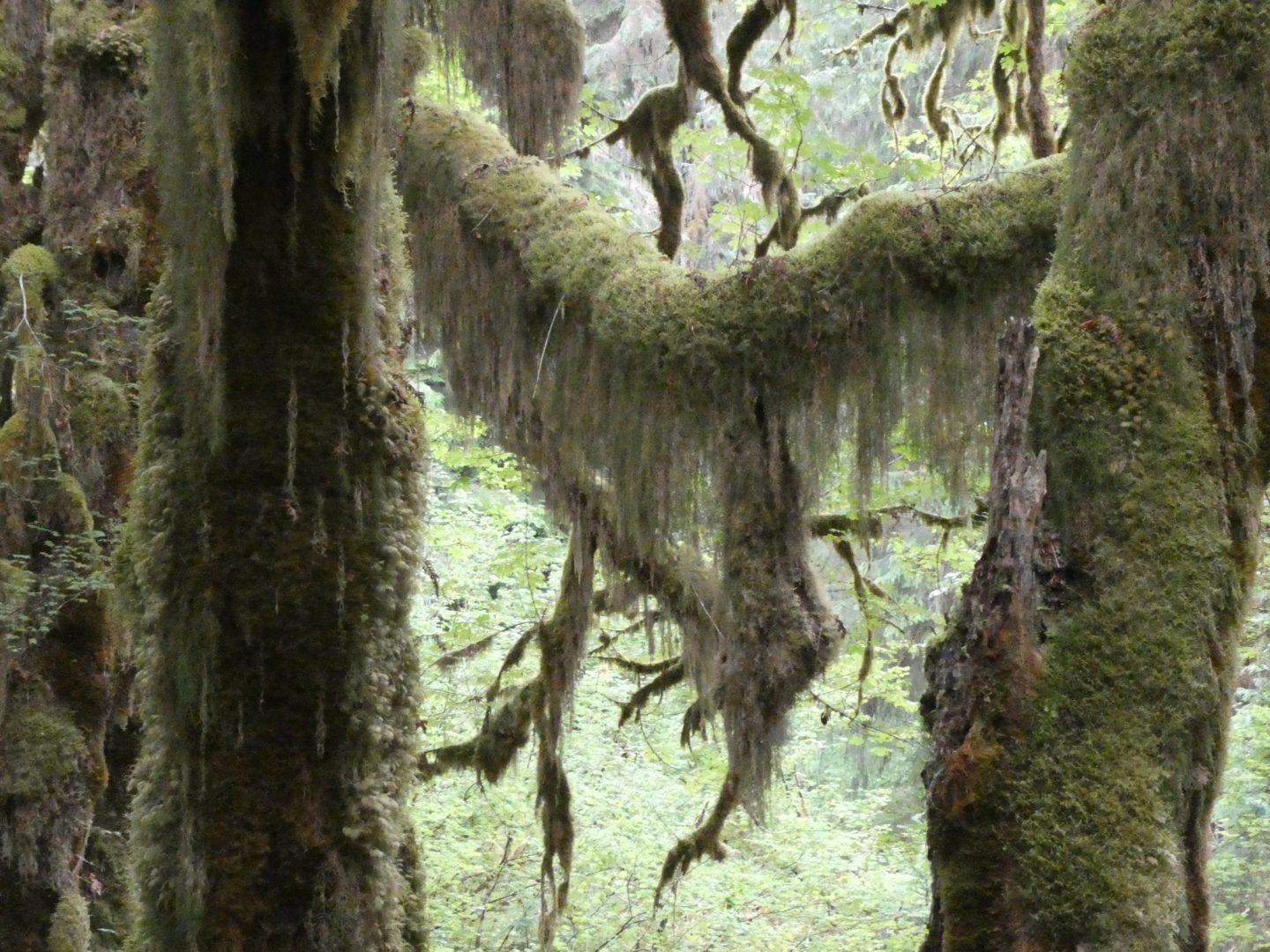 This looked like a bear came out to admire a rare moment of sunshine but the moss grows so fast he was soon trapped forever. 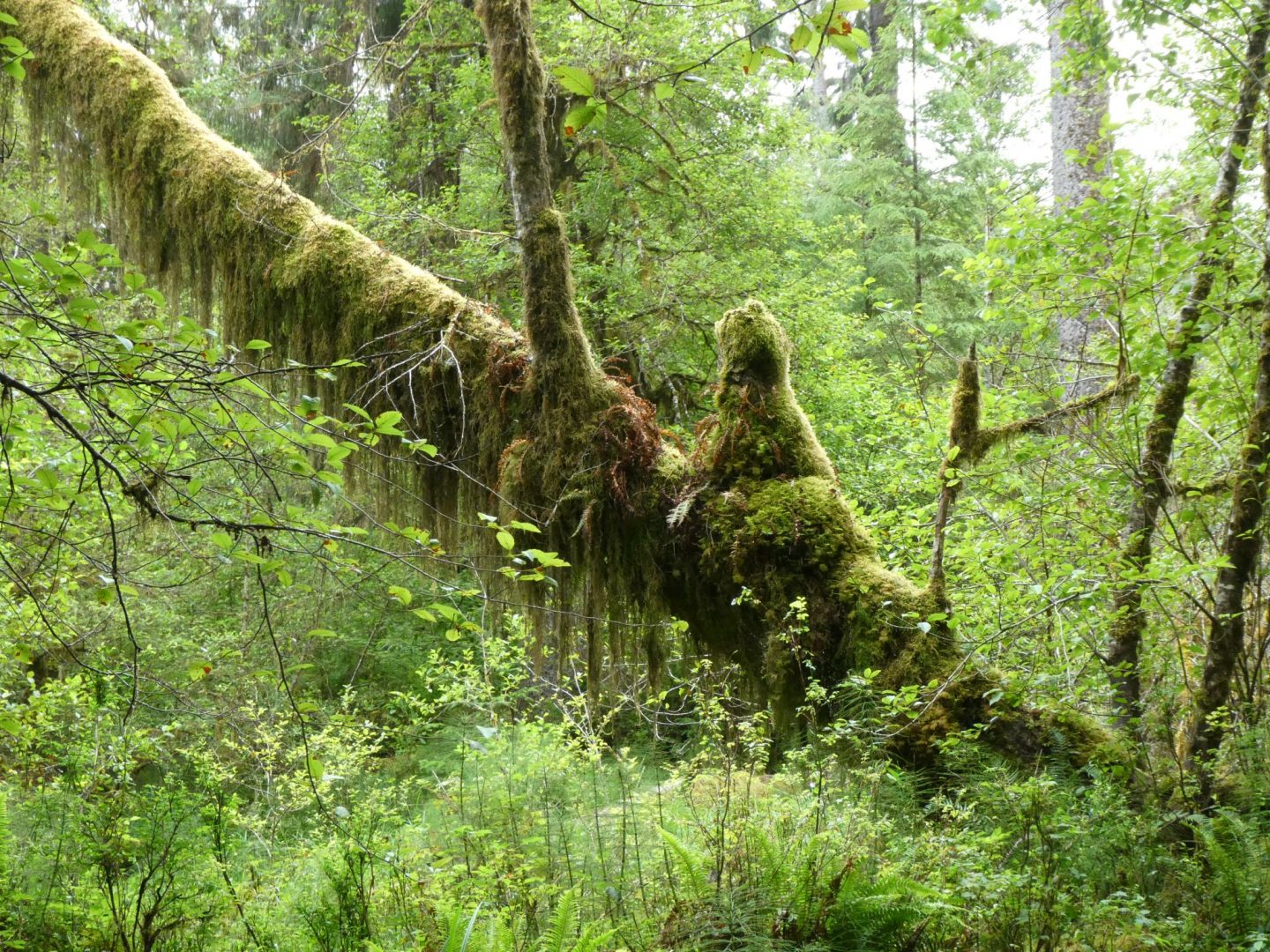 Our last stop was at Kalaloch Lodge, the only coastal lodge on the west coast of the peninsula.  Situated on a bluff looking out over that wild Pacific Ocean, it’s a fabulous location.  This too is a wild place and it isn’t difficult to guess which way the wind blows. 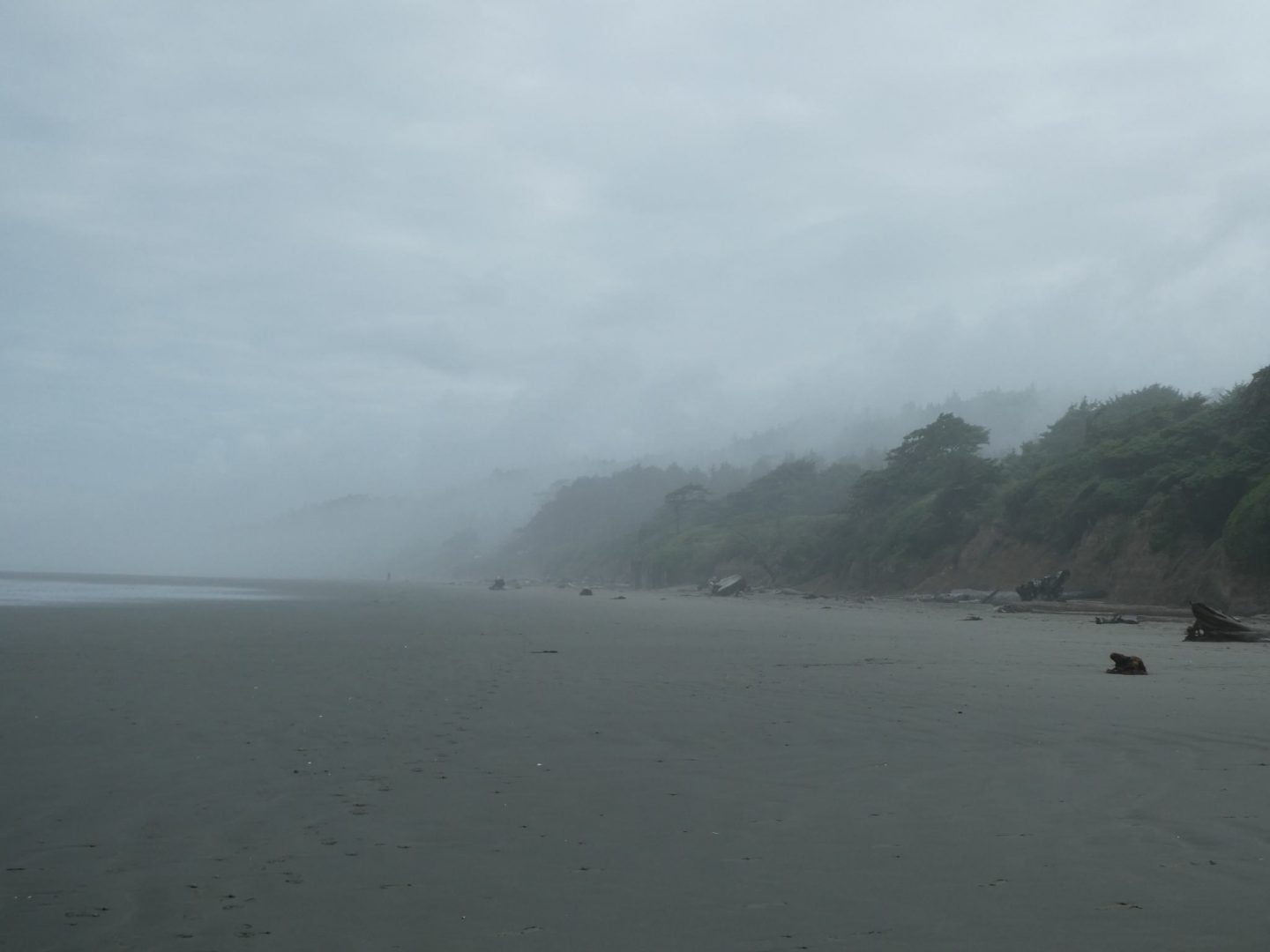 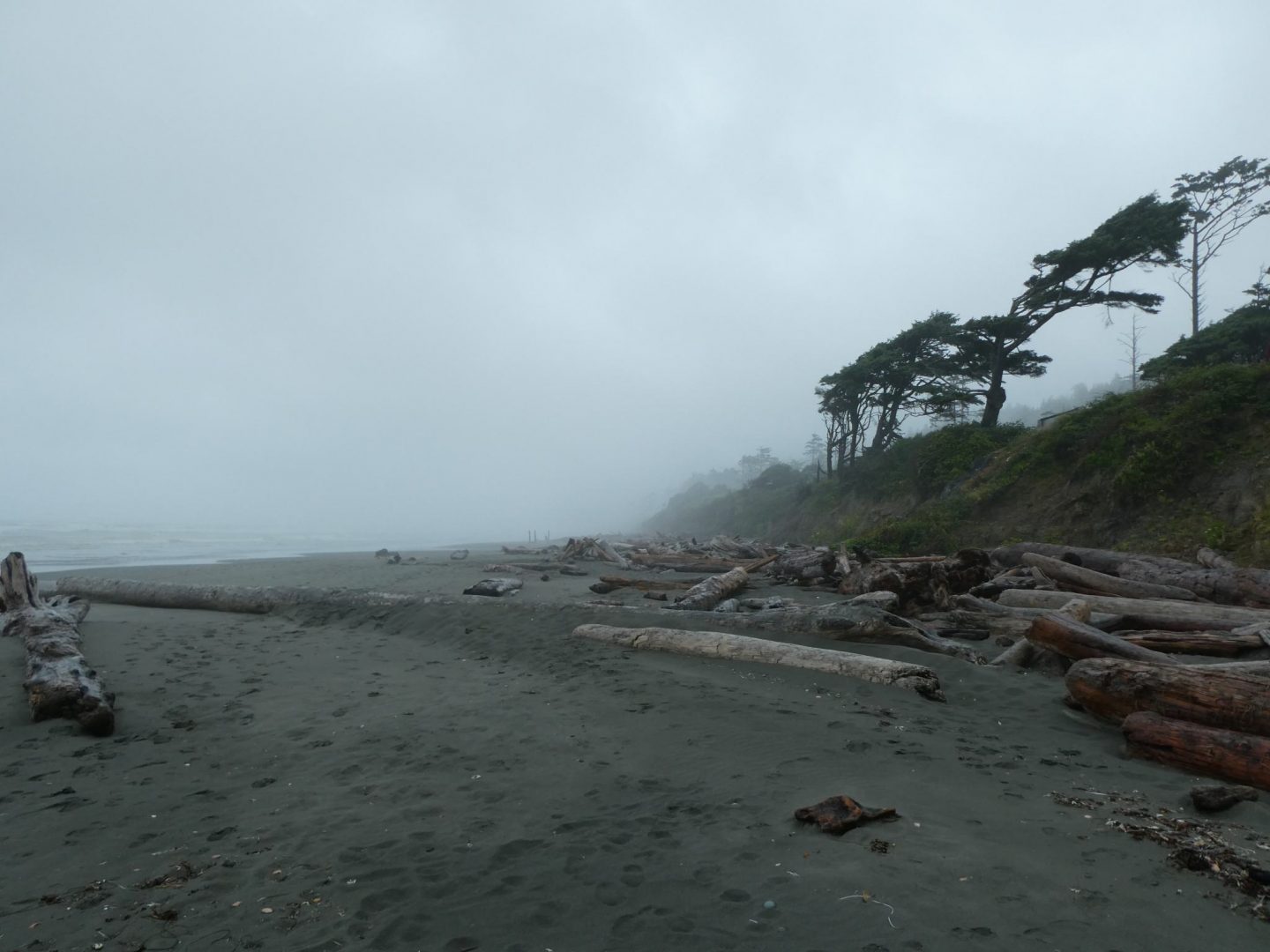 Here you can find ‘sand dollars’ – sea urchin shells bleached white and cast up on the beach. 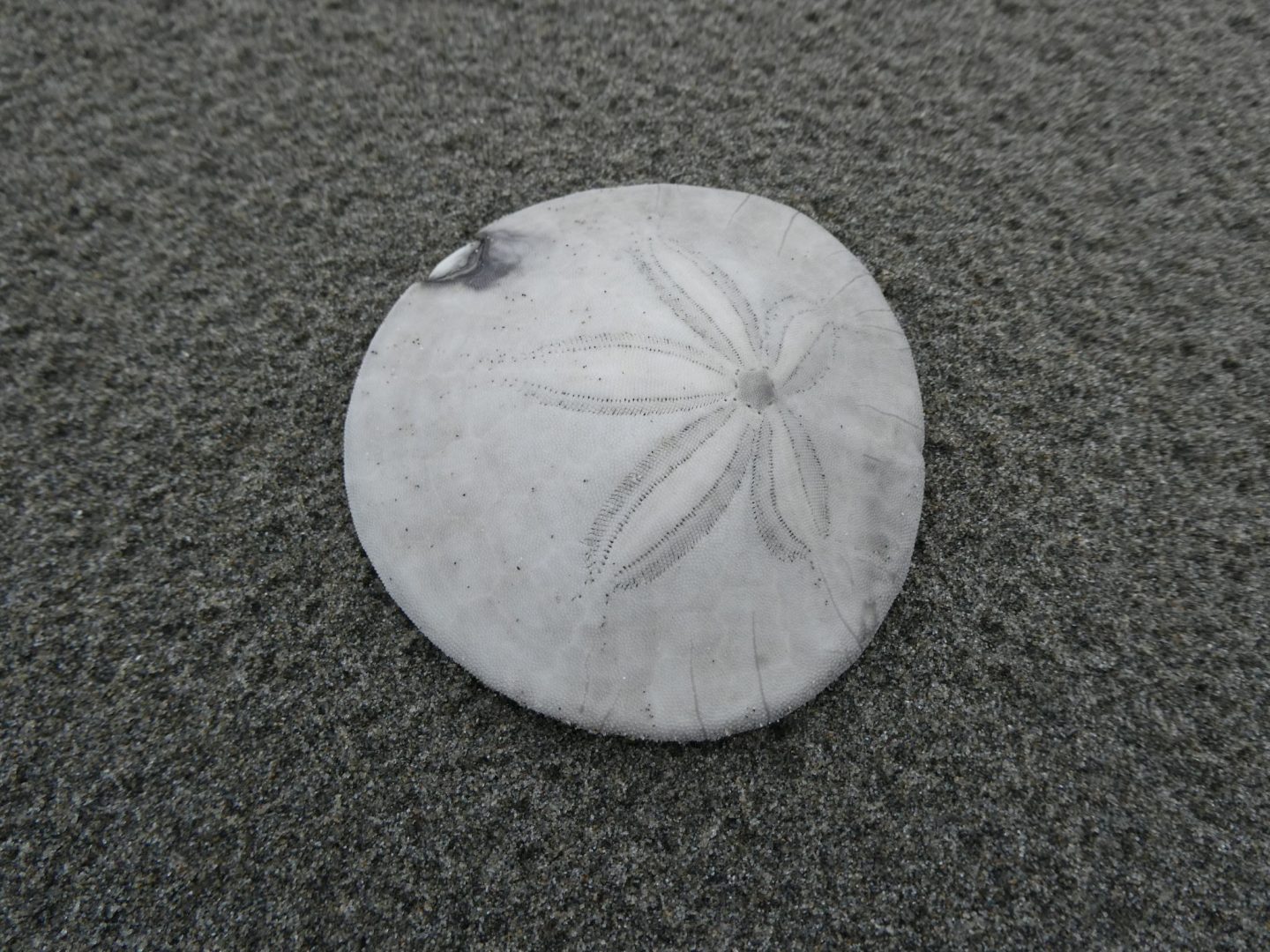 And it’s just a short hop from the Tree of Life.

A Sitka spruce should look like the trees on the shore in this photo, which we took from the lodge. 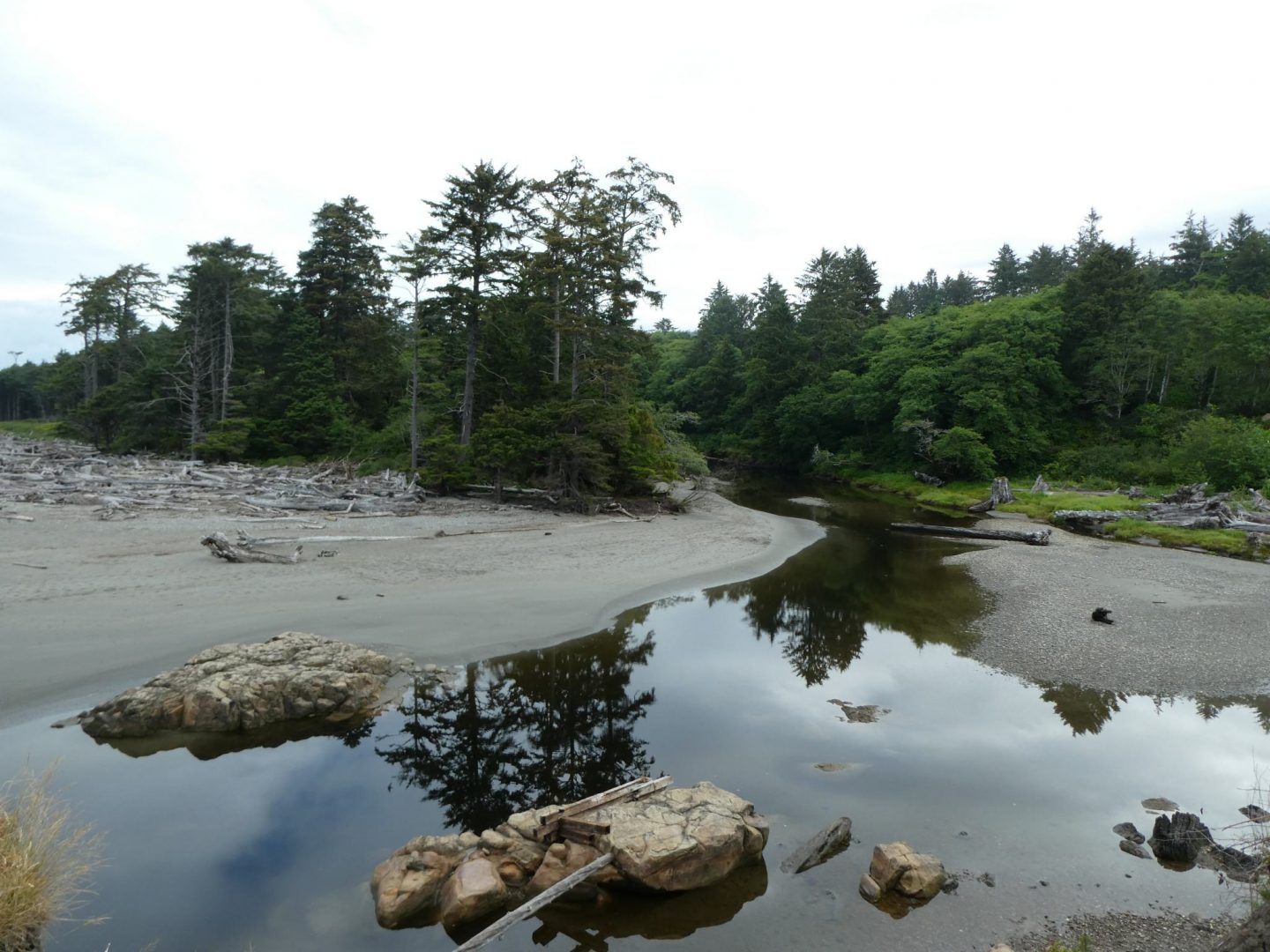 But in this case, erosion from a creek running from behind the bank down to the sea has removed the soil from around its roots, which are now totally exposed to the elements.  Although sagging in the middle, it still stands despite appearing not to be anchored to anything solid.  The vicious storms and winds which regularly pummel this coast have felled far more sturdy specimens.   Why it survives is something of a mystery, hence its name. 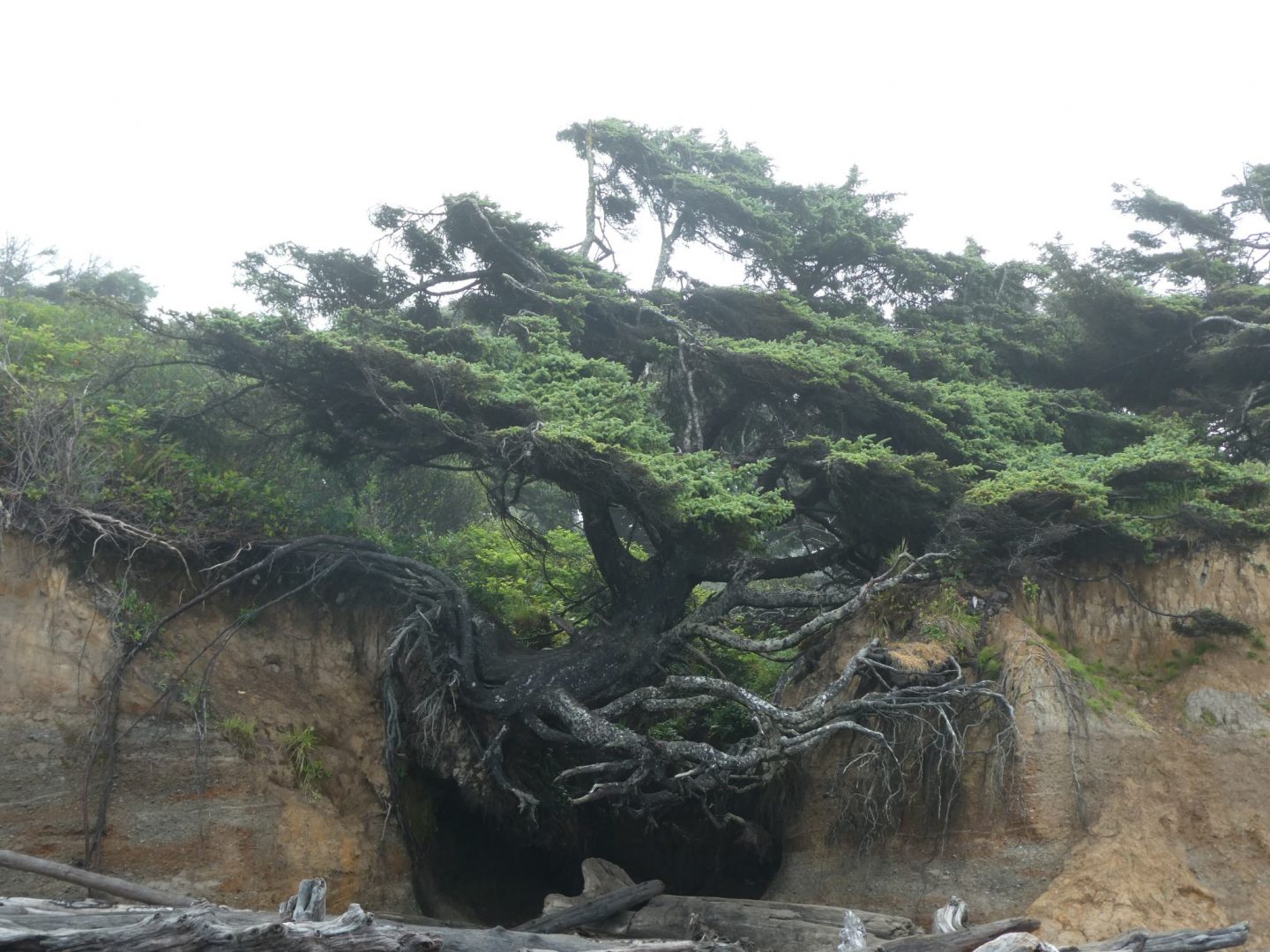 The Olympic Peninsula was a great way to finish our meanders around the national parks of Oregon and Washington.  Next, on to Seattle.