The birthplace of Boeing, Grunge music and Starbucks coffee.  The headquarters of Amazon and home to Google’s second largest office.  The city where, according to Meg Ryan’s boss in Sleepless in Seattle, “it rains nine months a year”.   Seattle is a surprising and eclectic place to spend a few days.

Our primary reason for visiting was to see Chihuly Garden and Glass.  We’ve both loved Dale Chihuly’s glass works since seeing an exhibition of his in Christchurch in the mid 1990s.

Chihuly was born in Tacoma, near Seattle.  By his early 30s he was an established glass artist and teacher of glass blowing.  In a cruel irony of fate, he lost his left eye to shattered glass when he was thrown through the windscreen in a car accident in 1976 at age 35.  Two years later a shoulder injury meant he could no longer hold the heavy glass blowing tubes he used to make his creations.  Since then he has used teams of blowers to create works under his supervision, which seem to have become increasingly complex and amazing through his career which now spans more than 50 years.

Chihuly Garden and Glass opened in Seattle in 2012 and is the most comprehensive collection of his works anywhere.  The exhibition starts with several rooms of his indoor sculptures.  We particularly loved his Sealife collection.  Like this one. 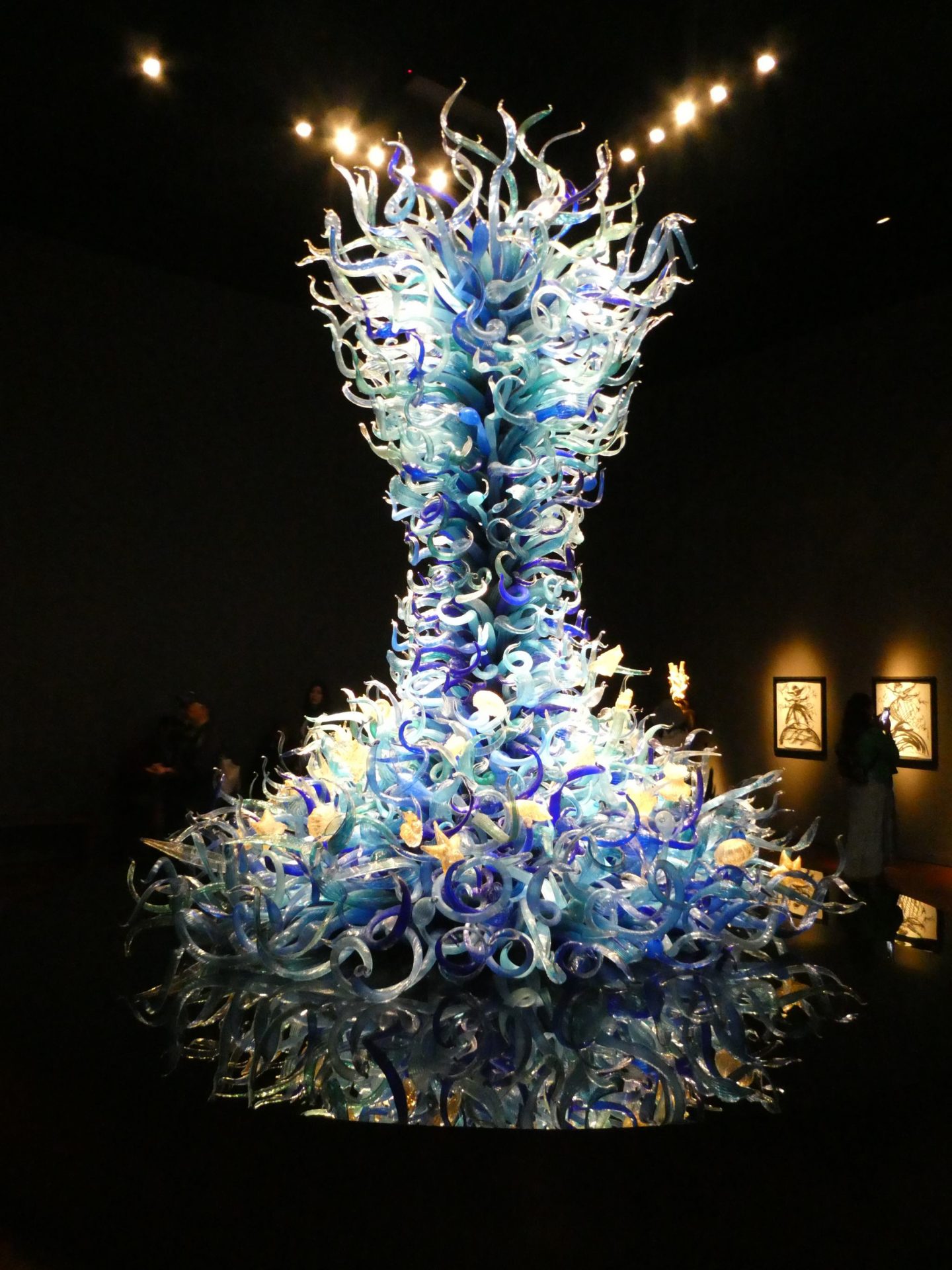 In the mid 1990s in Finland he was experimenting with throwing glass forms into a river to see how the glass and water interacted.  Local children picked them up from row boats and this became the inspiration for his rowboat installations.  Nijima Floats references Japanese fishing net floats and Ikebana Floats references the Japanese art of ikebana.  To give some perspective, these are real wooden boats about 6 metres long. 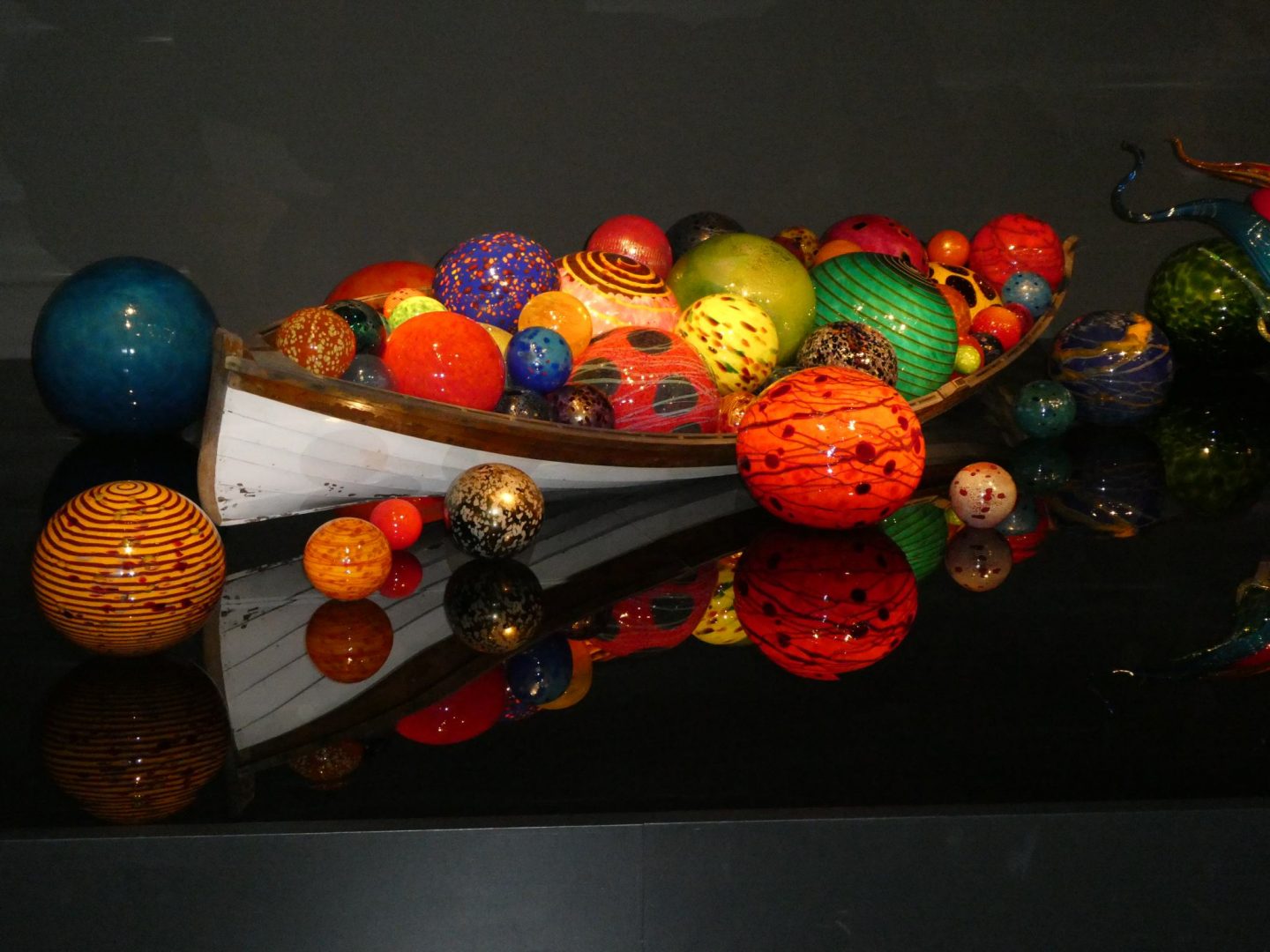 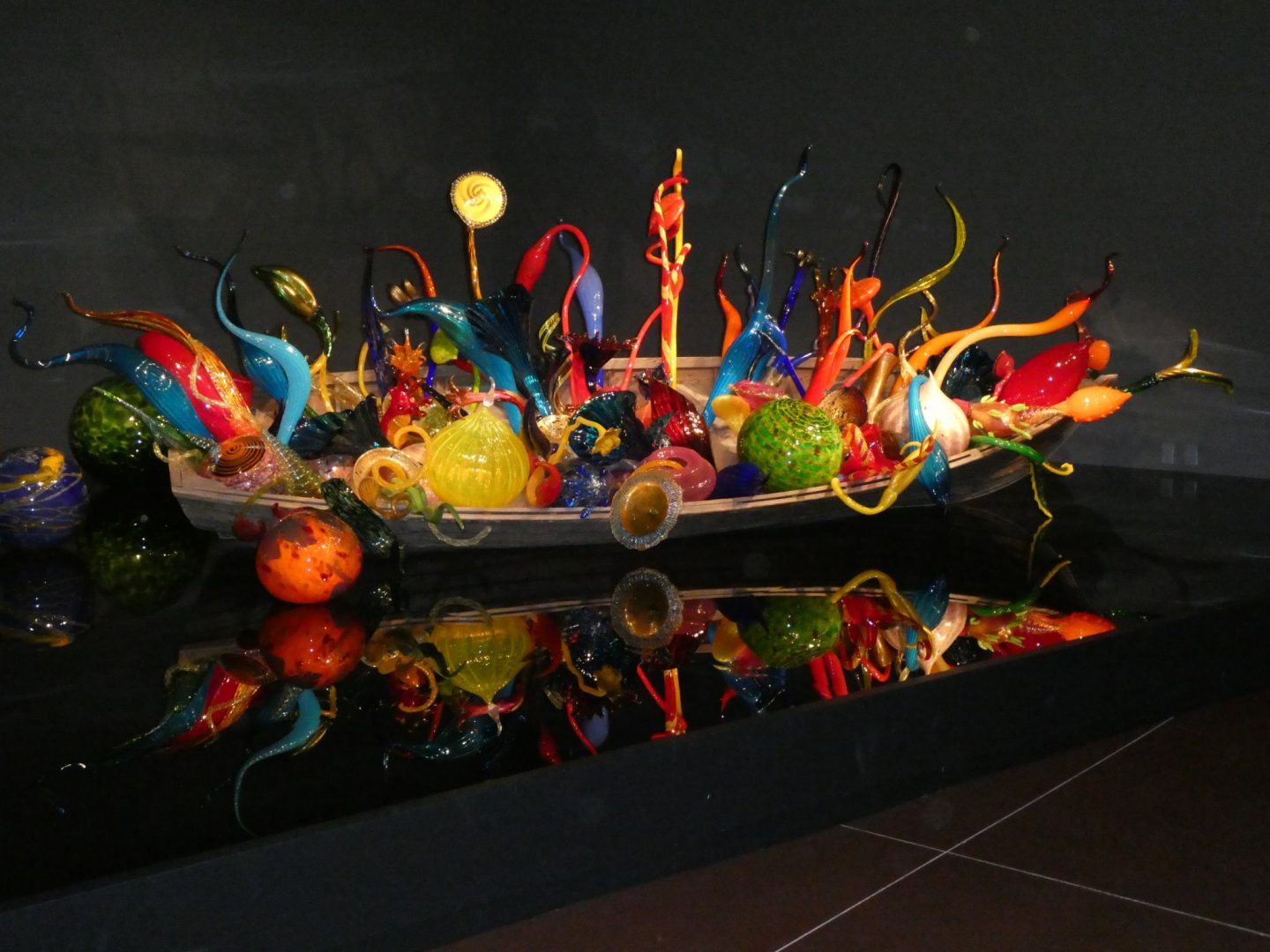 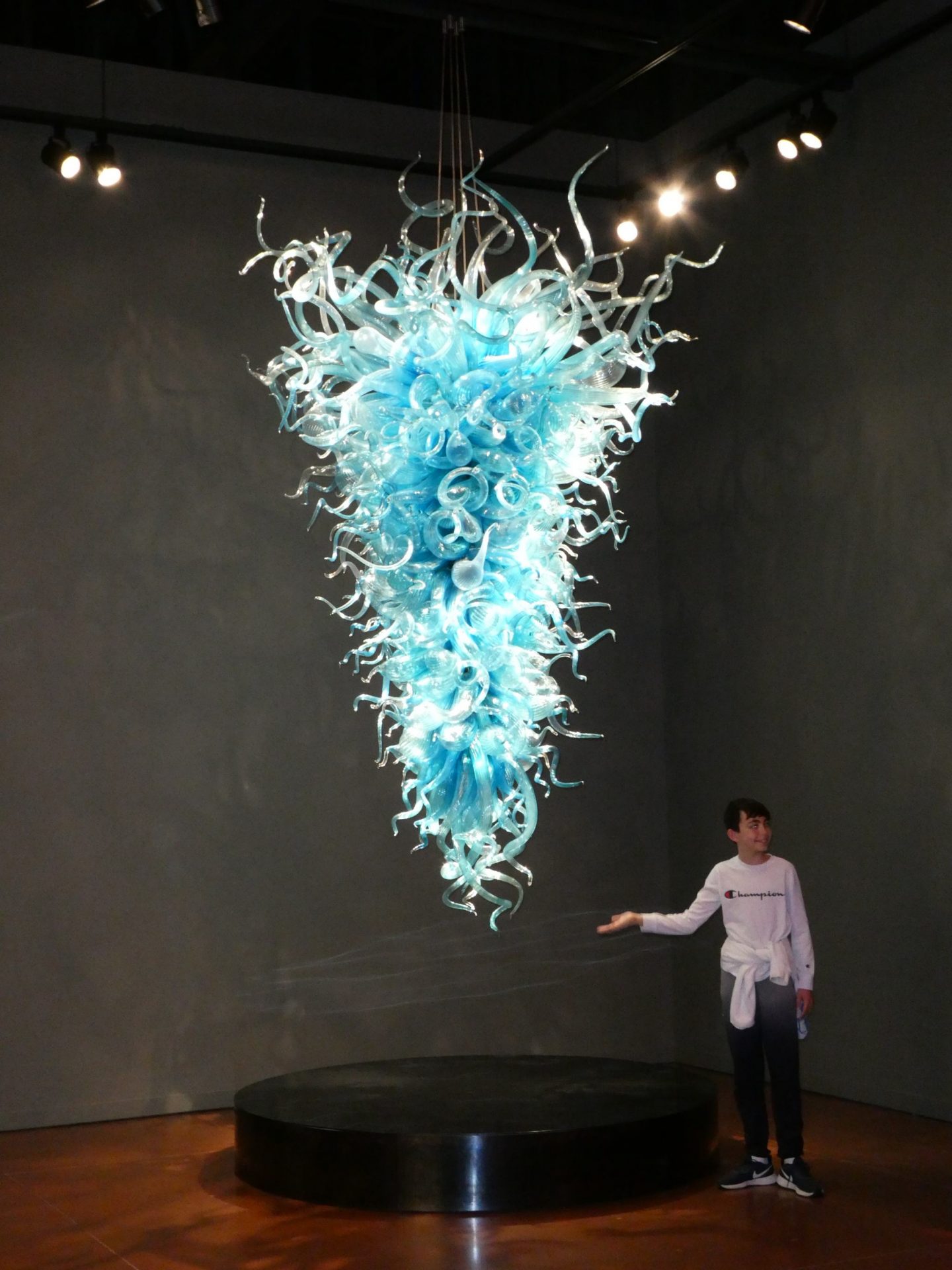 Annexed to the exhibition building, the Glasshouse was purpose built to house this 33 metre long creation, one of Chihuly’s largest suspended sculptures. 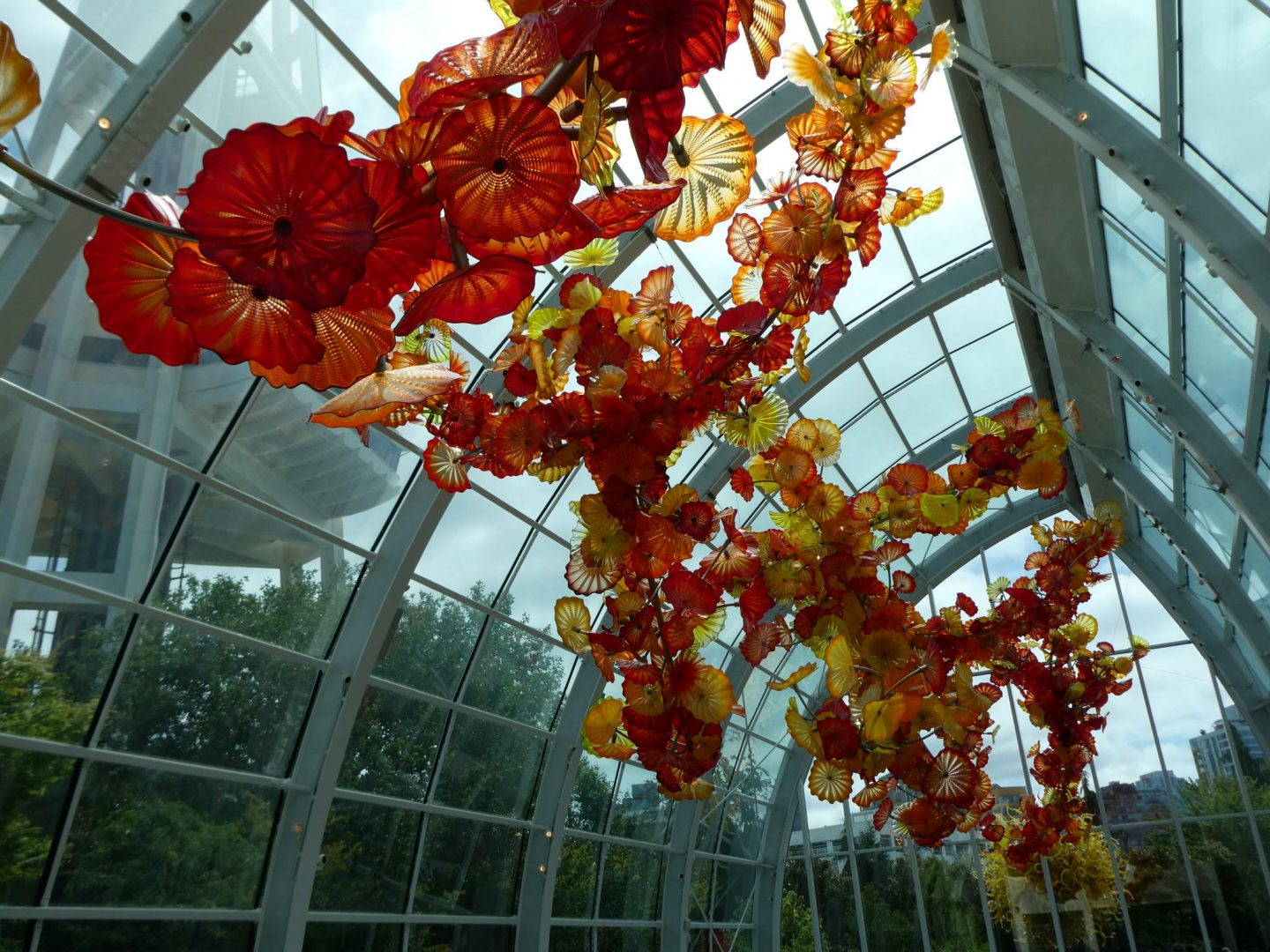 And surrounding the glasshouse, perhaps the most impressive of all, is a garden with Chihuly creations interspersed with living plants. 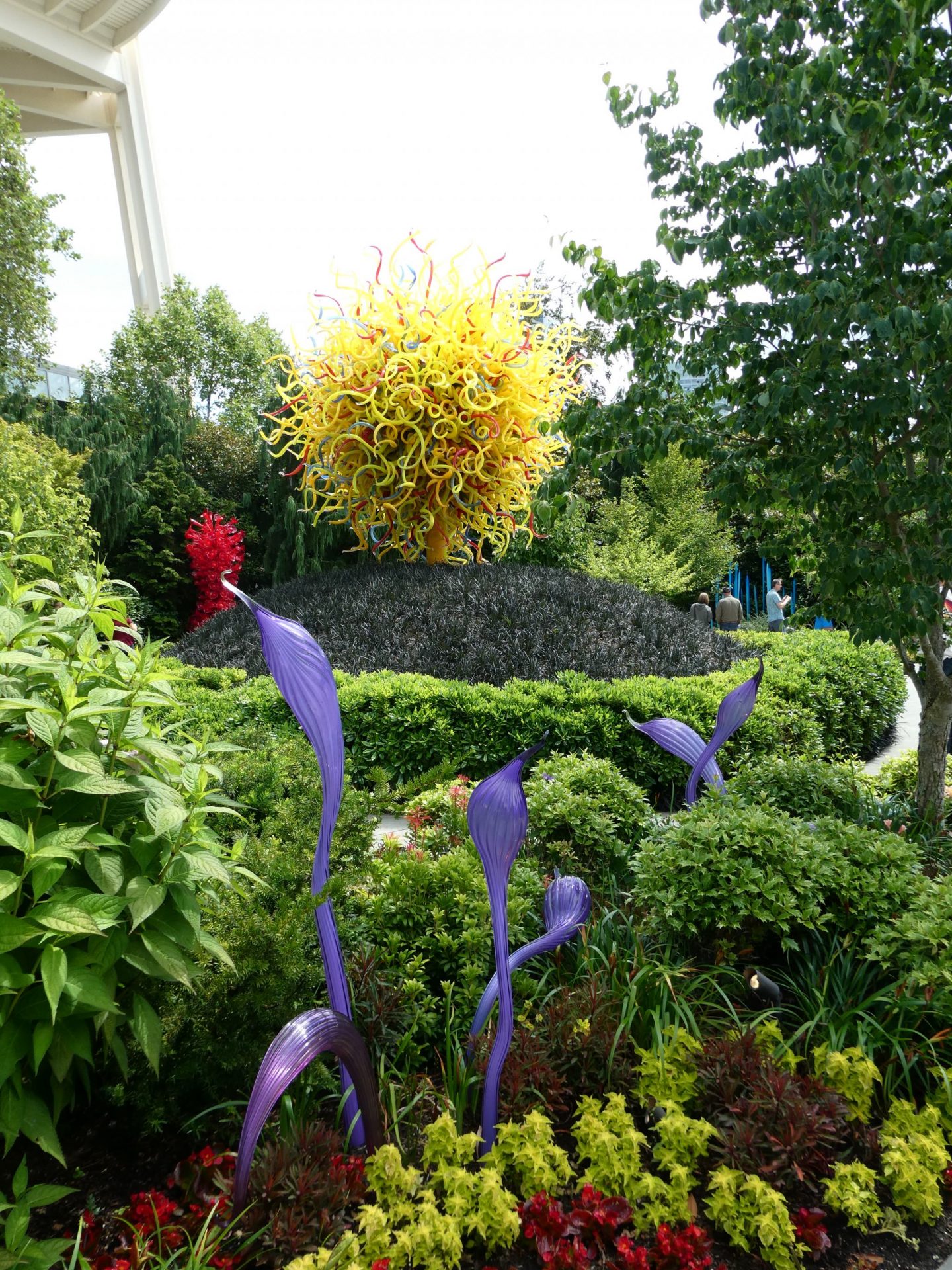 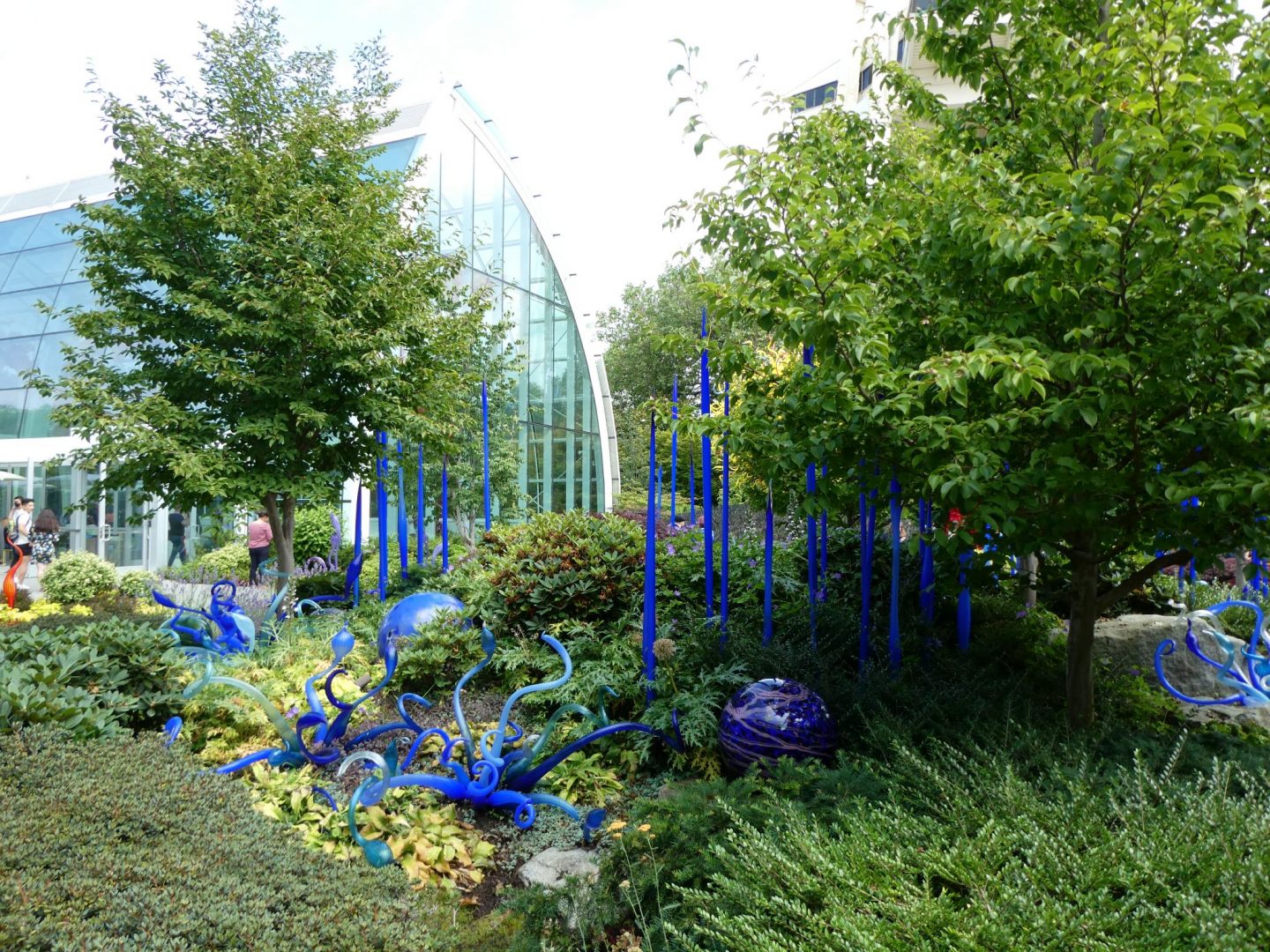 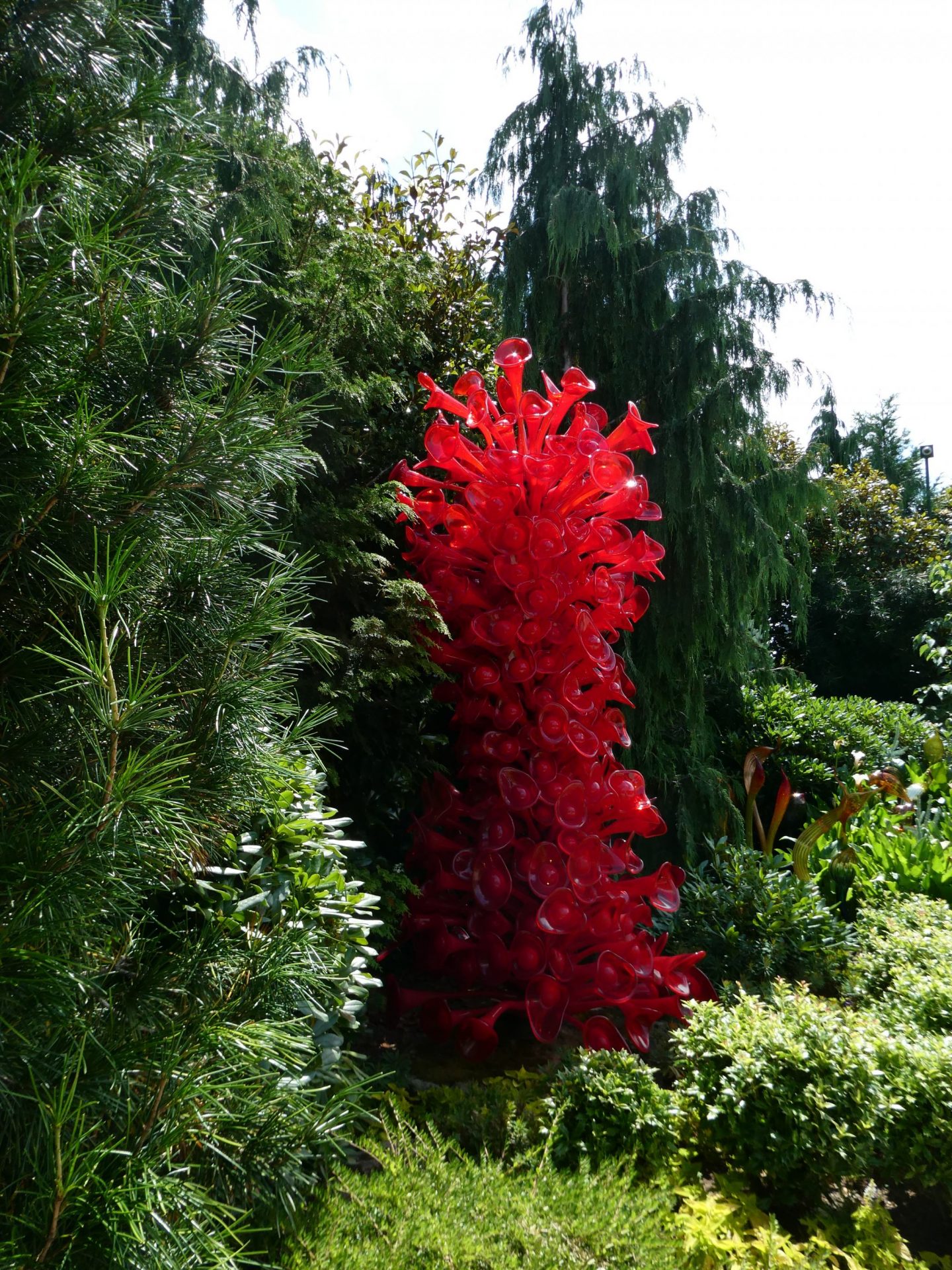 Next door we took the obligatory trip up the Seattle Space Needle.  Built as Seattle’s showpiece for the 1962 World’s Fair, at the time of its construction it was the tallest building west of the Mississippi River.  The USA was gripped by an obsession with space exploration and all things futuristic.  The design referenced a flying saucer and inspired the sky pad apartment buildings in the cartoon series The Jetsons whose stalks would rise and lower depending on the smog levels. 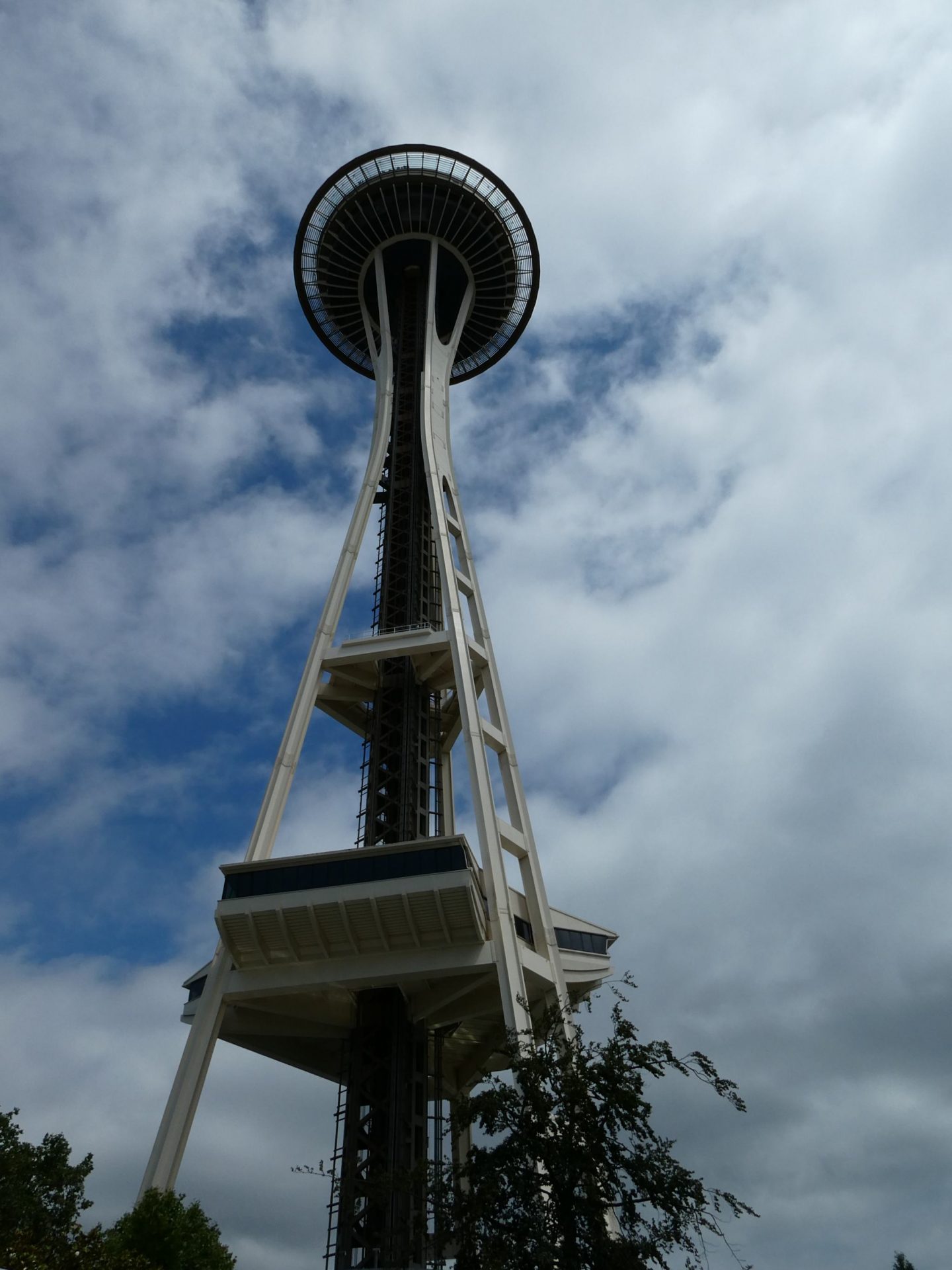 Of course, by today’s standards, the tower isn’t so tall, but it does have the world’s only revolving glass floor.  Looking out isn’t bad, but looking down between your feet to the ground 150 metres below while the floor slowly circles is a vertiginous experience. 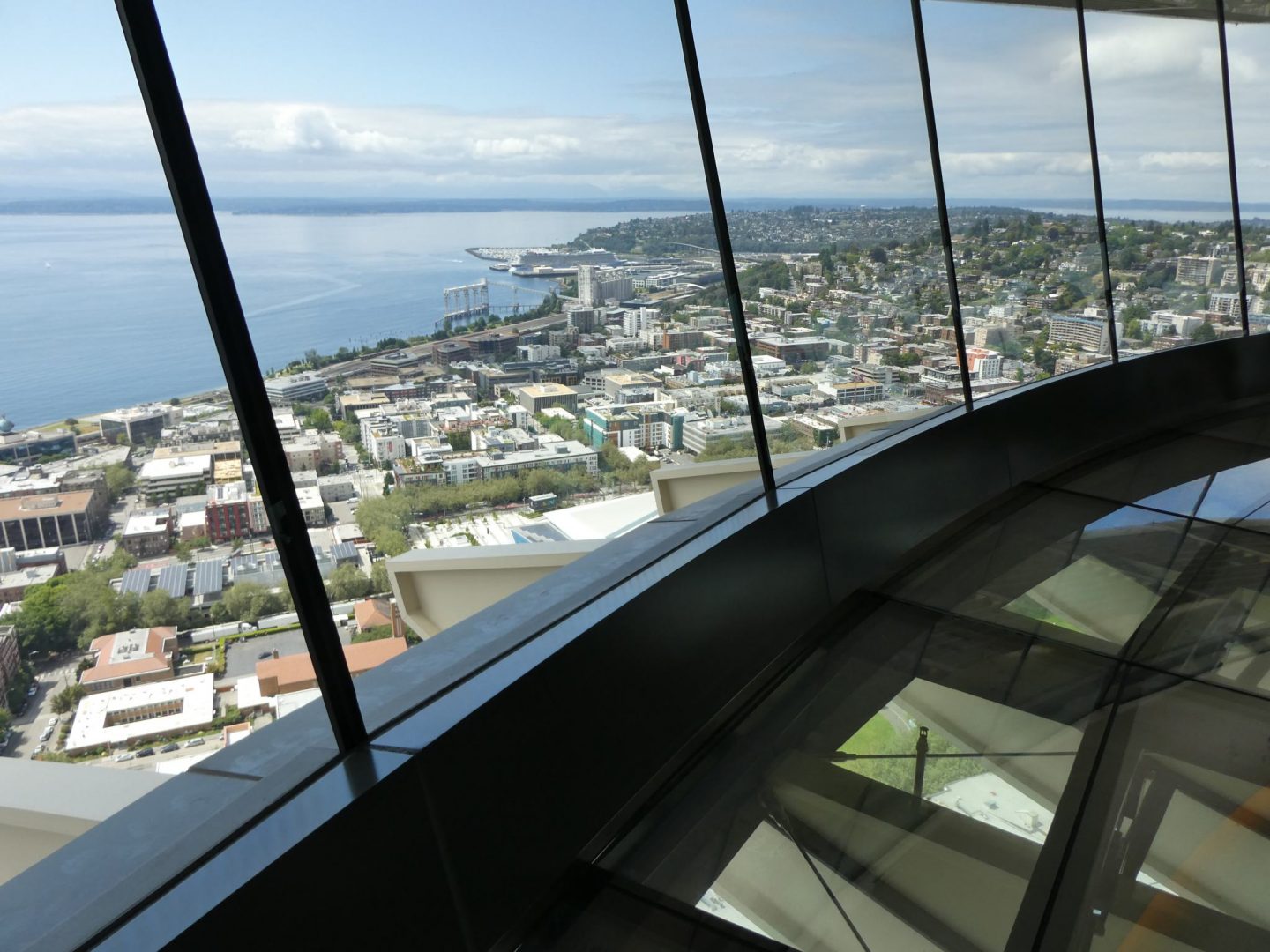 Nearby is the Museum of Pop Culture.  The building itself is interesting – a classic Frank Gehry design.   The monorail from downtown Seattle runs right through it. 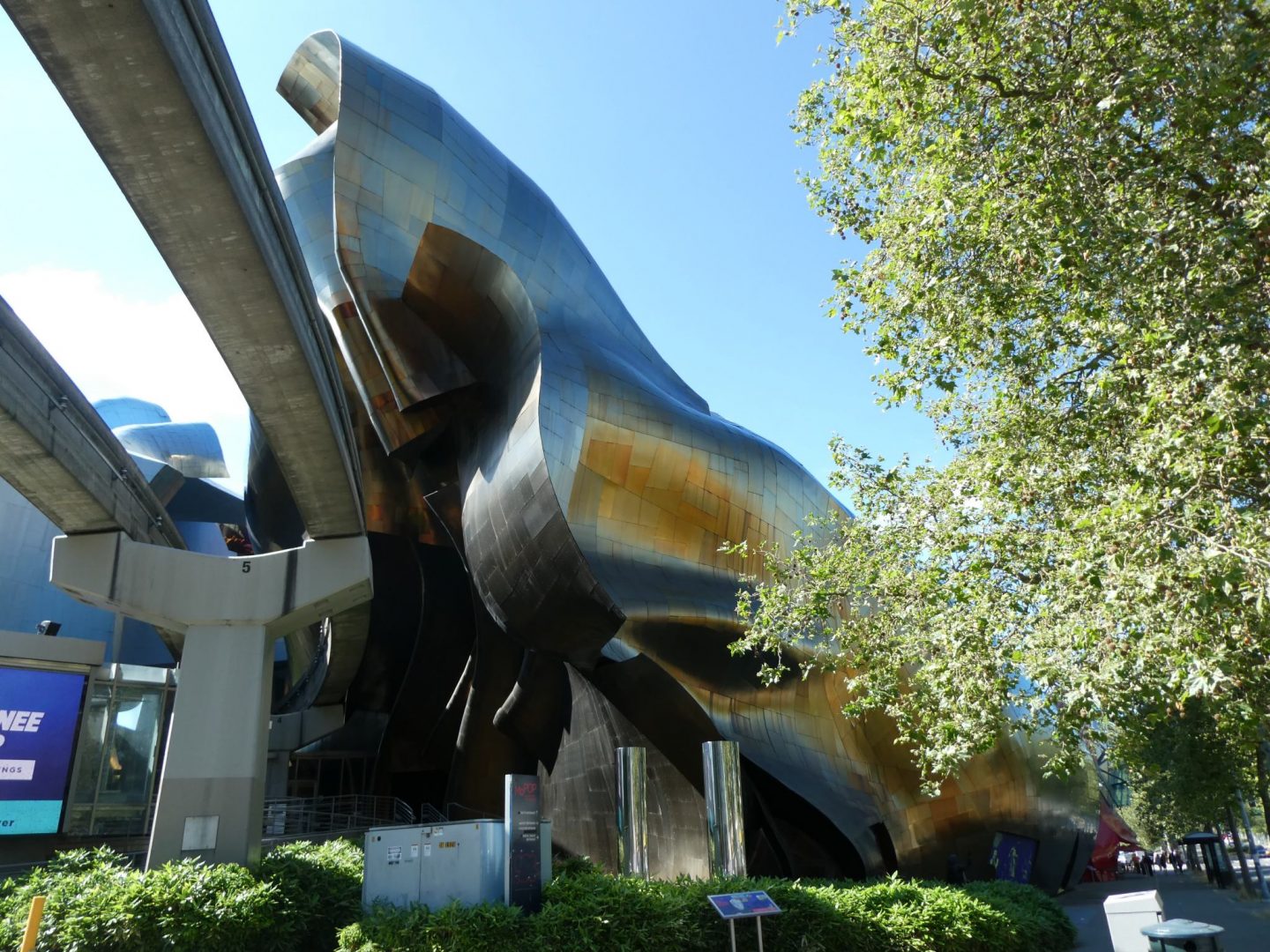 The museum is a non-profit institution dedicated to contemporary popular culture.  It was founded by Paul Allen, co-founder of Microsoft.  Without wishing to sound cynical, we couldn’t help suspecting either he wanted to show off his magnificent collection or there was some tax break involved in making it available to the viewing public.  Either way, or indeed if it was motivated purely by altruism, this is a very, very fun way to spend half a day.

There’s a gallery dedicated to the rise and demise of Nirvana, presented through the lens of the then-emerging Grunge music scene in Seattle.  And another stuffed full of Pearl Jam memorabilia, including this set of surfboards created for their 1995 Australian tour. 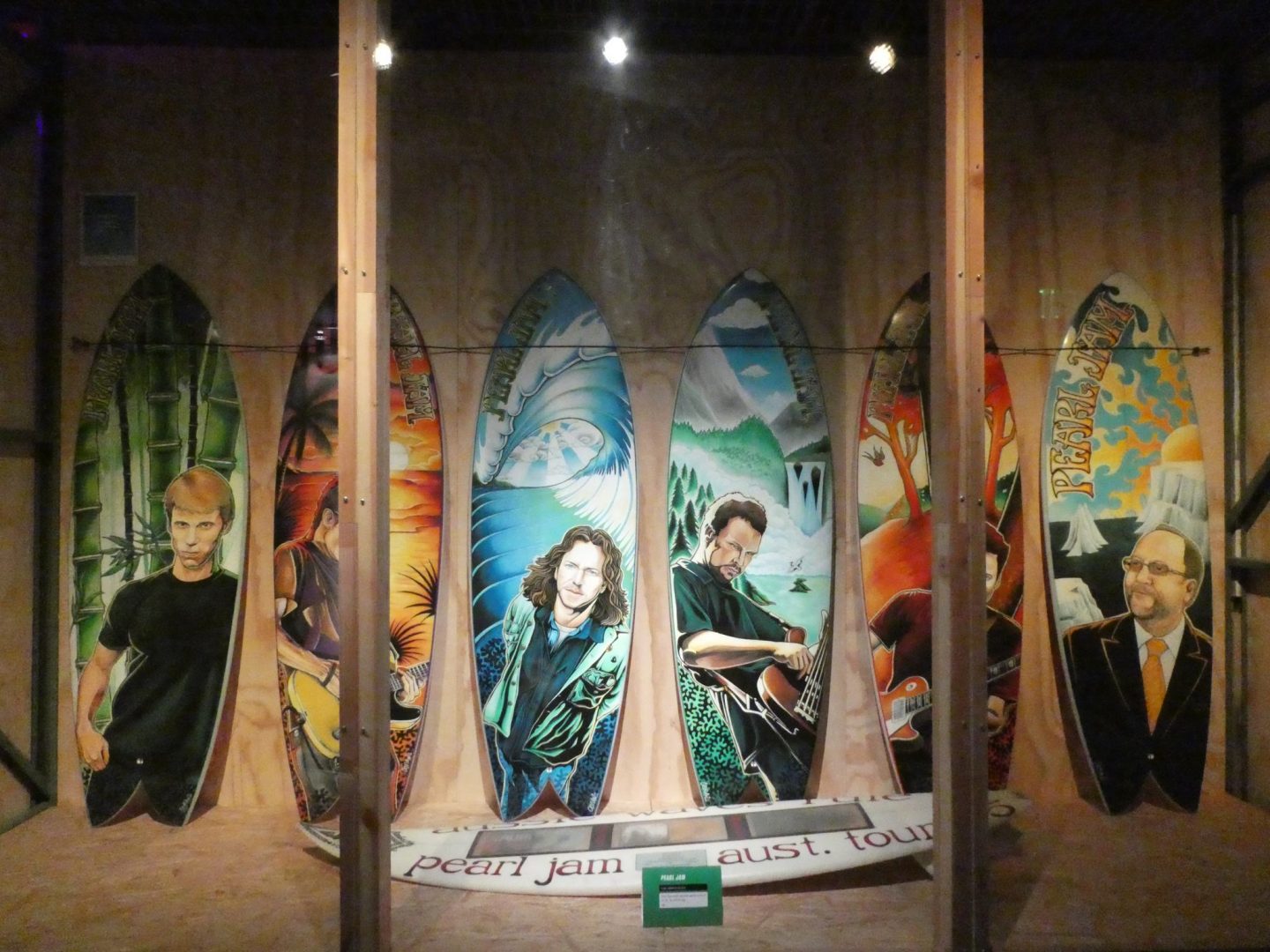 There’s a gallery of guitars with dozens of famous ones.  There’s the 1956 Stratocaster used by Eric Clapton for the hit song Layla, his love song to his then best friend George Harrison’s then wife, Pattie Boyd.  It worked. He got the girl. At least for a while.  And the 1990 Gibson Explorer with which Dave Grohl transformed himself from drummer with Nirvana to guitarist with the Foo Fighters.  Others belonging to Muddy Waters, Bonnie Rait, Jimi Hendrix.   And many more. 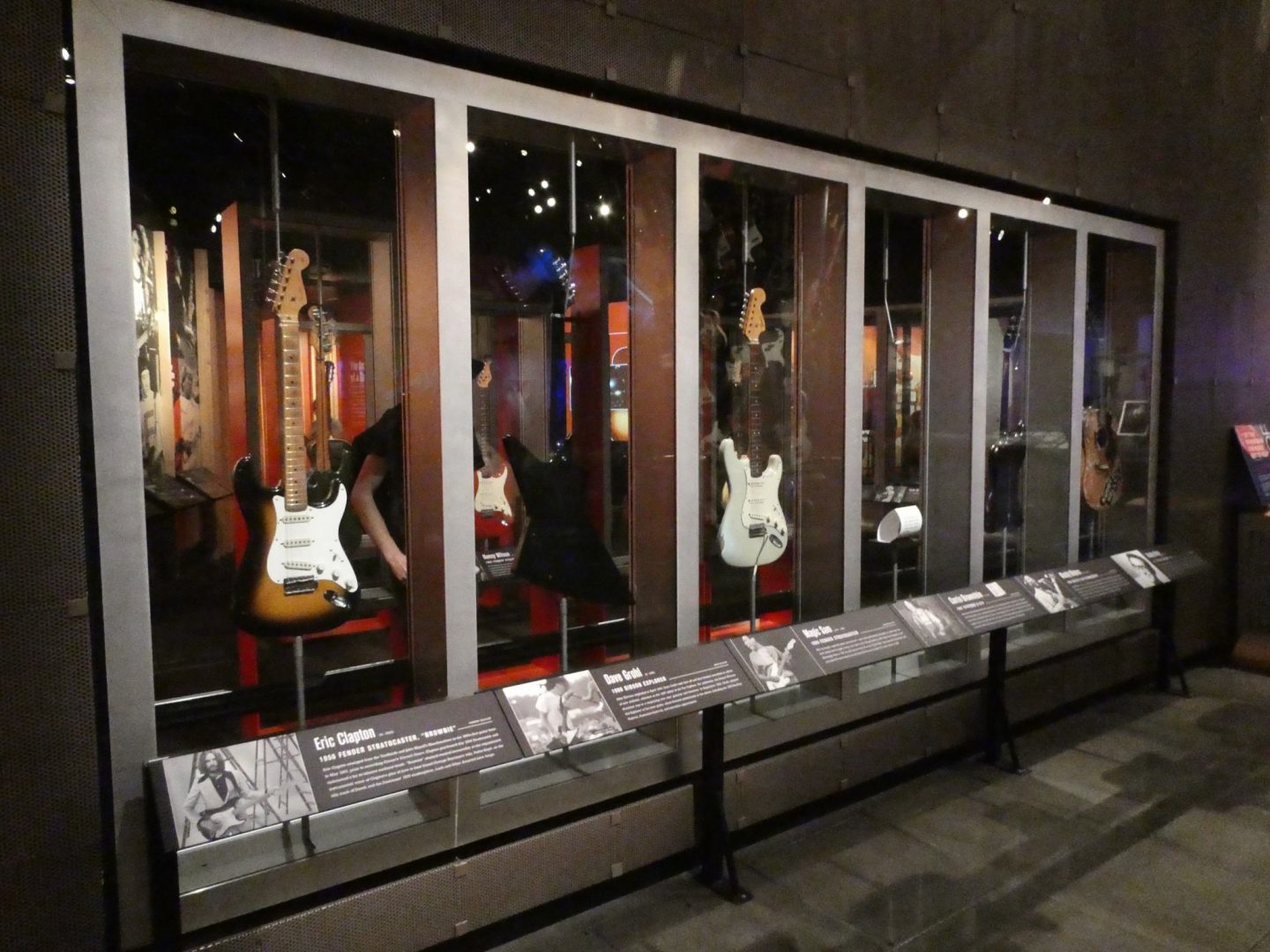 Other exhibitions include sci fi, myths and magic, horror movies and fantasy.  There’s all sorts of nerdy-cool props and costumes like a Terminator from the movie series, a Dalek from Dr Who, hover boards from Back to the Future, and for a younger audience, costumes and props from Harry Potter, Game of Thrones and a bunch of other fantasy/sci fi productions.

From the nerdy-cool to the plain icky, back downtown we visited the Gum Wall, downstairs from the Pike Place Market.  A Tripadvisor poll judged it the second germiest tourist attraction in the world – after the Blarney Stone.  Yes, it’s the brick walls of a dingy alley covered in used chewing gum.

It started in 1991 when a bunch of patrons at the Market Theatre pushed gum onto the wall outside and pressed coins in.  The coins were removed but the gum stayed.  More was added.  Over time it grew to 15 metres in length and reached up 6 metres.   In 2015 the market authority attempted a total steam clean which took 130 hours, cost $US4,000.00 and removed 1,070kg of gum from the walls.  Job done?  Hardly!  Within days, gum began re-appearing.  Now it’s back to it’s heyday and gum covers the walls on both sides of the alley.

Some call it ‘crowd sourced art’.  It’s also been called ‘Jackson Pollock for idiots’.  You decide. 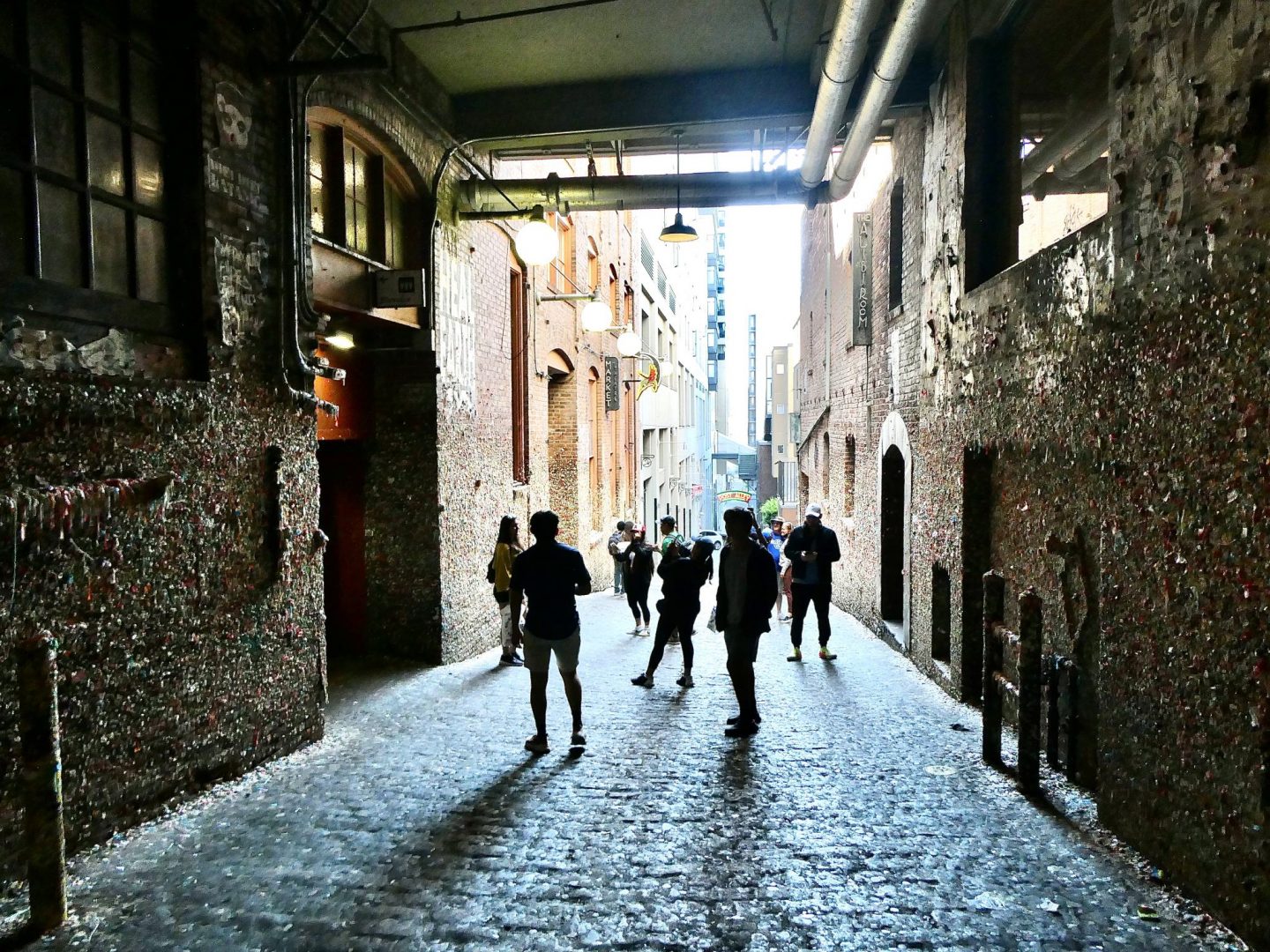 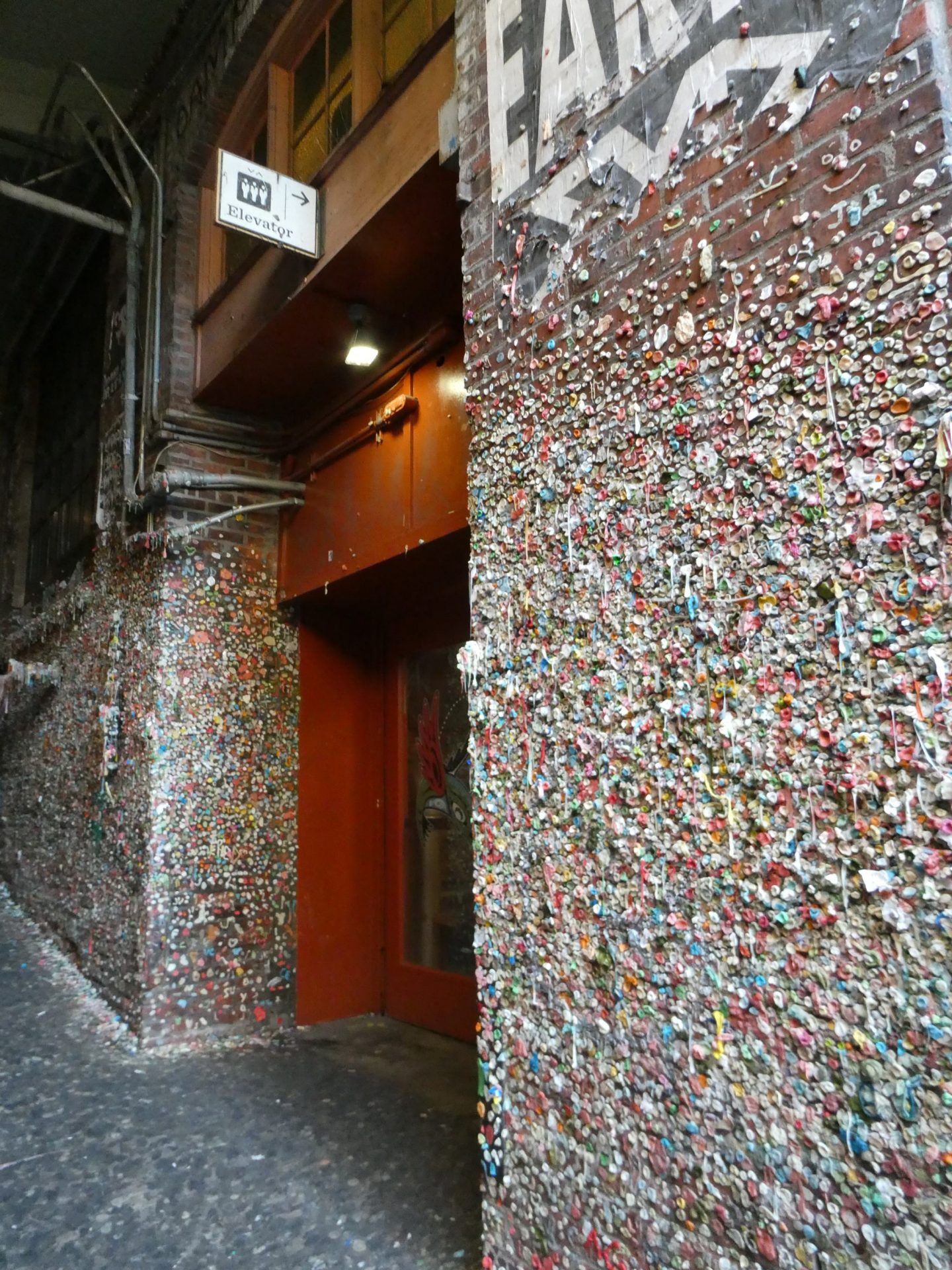 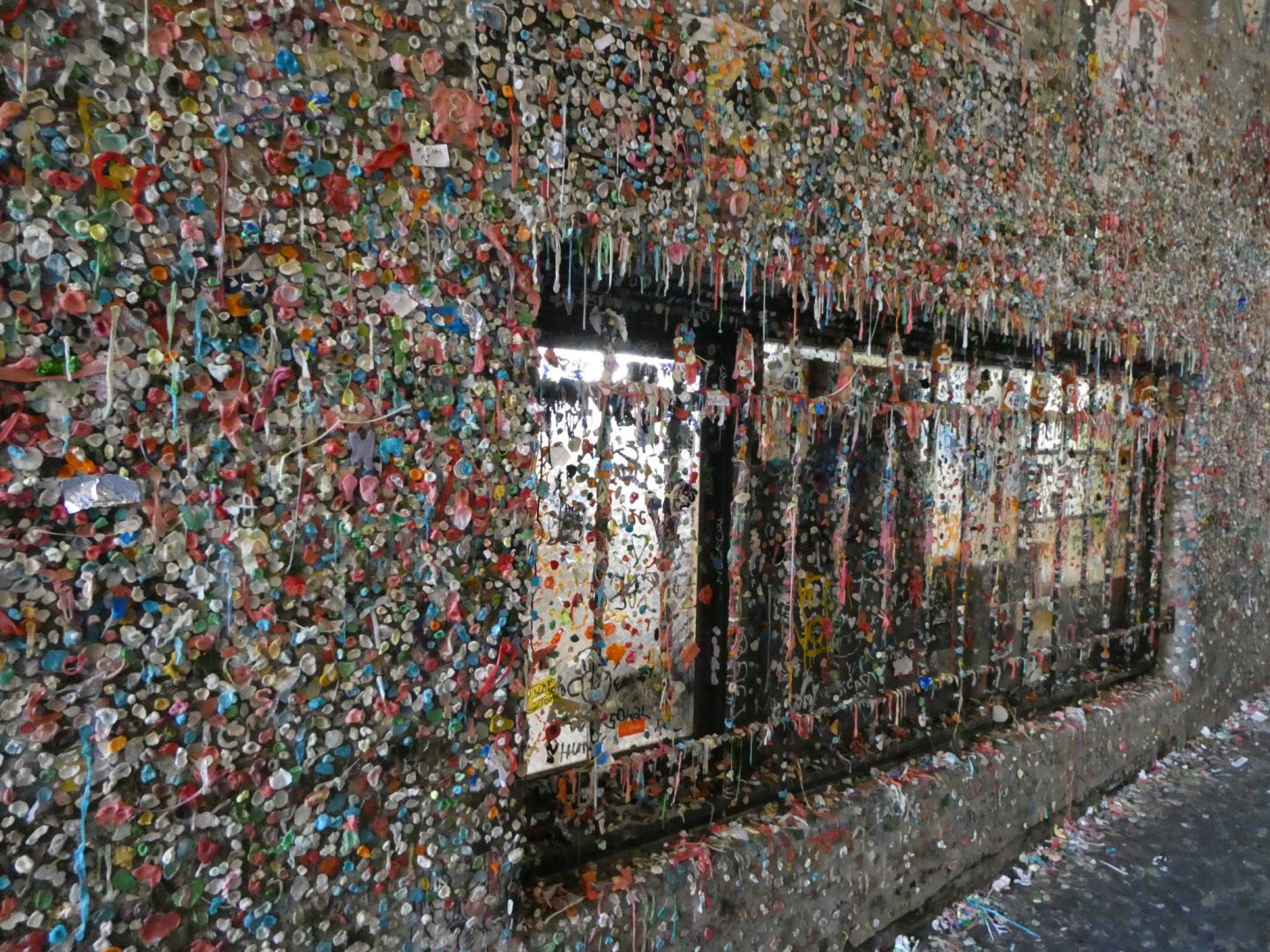 Up above, Pike Place Market is a city icon.  Seattle’s original farmer’s market is home to over 500 stalls with everything from fresh produce to trashy tourist tat.  But there’s one stand that, well, stands out.  For decades the fishmongers at Pike Place Fish Market have engaged in a practice of throwing fish.  It started with the now retired owner, who found it was quicker than walking from the front to the back to weigh fish.  Now it’s become a tradition and people hang around waiting to see it.  We saw it twice, so I guess they indulge their audience fairly frequently.  This isn’t a great photo and on this occasion it wasn’t a whole fish, but you get the idea. 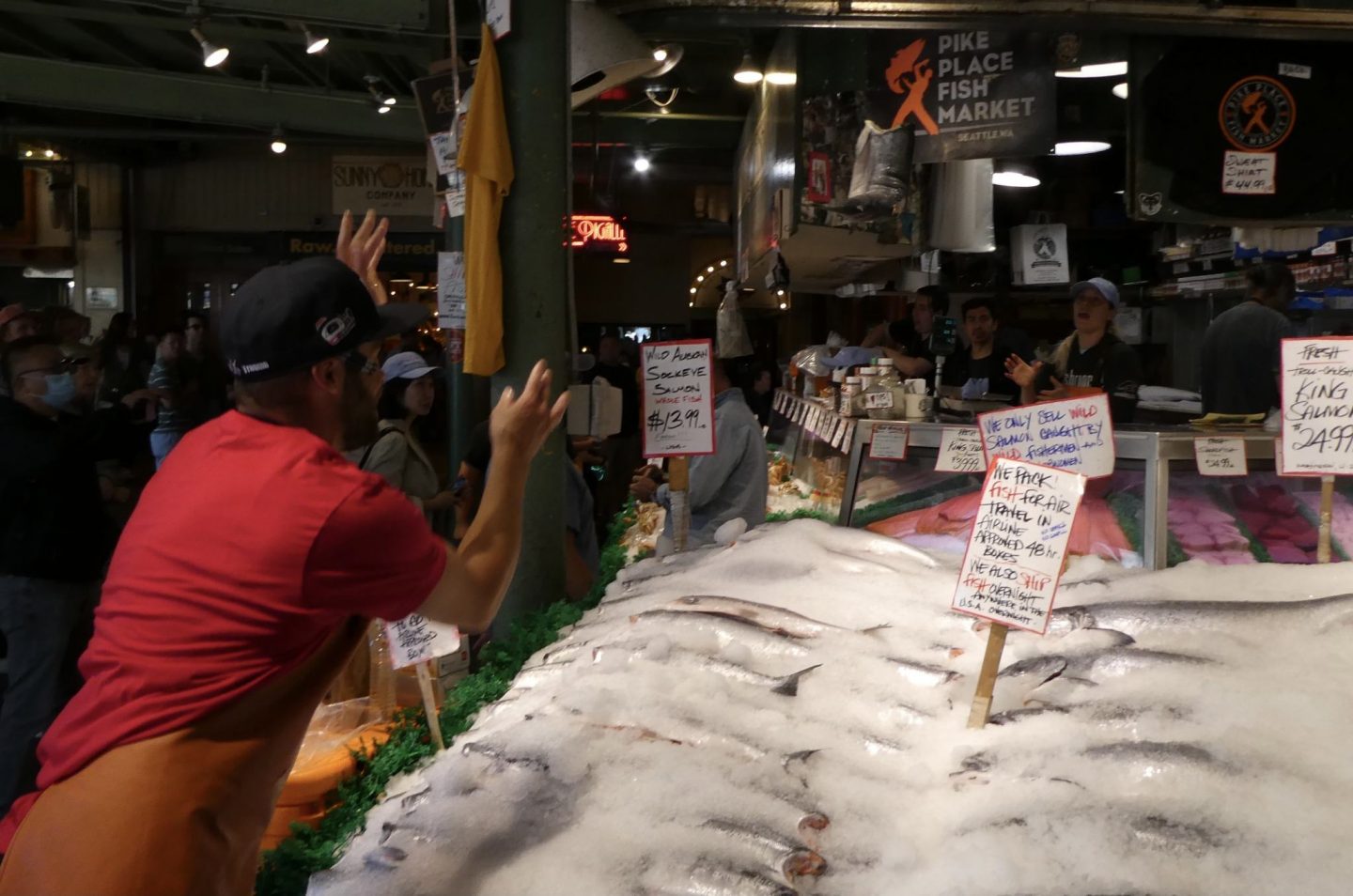 A first-time visit to Seattle would not be complete without taking a bus over the canal to the suburb of Fremont.  Here, the Fremont troll lives under the George Washington Memorial Bridge.  He’s clutching a real Volkswagen Beetle in his left hand – like he just reached up and swiped it off the bridge. 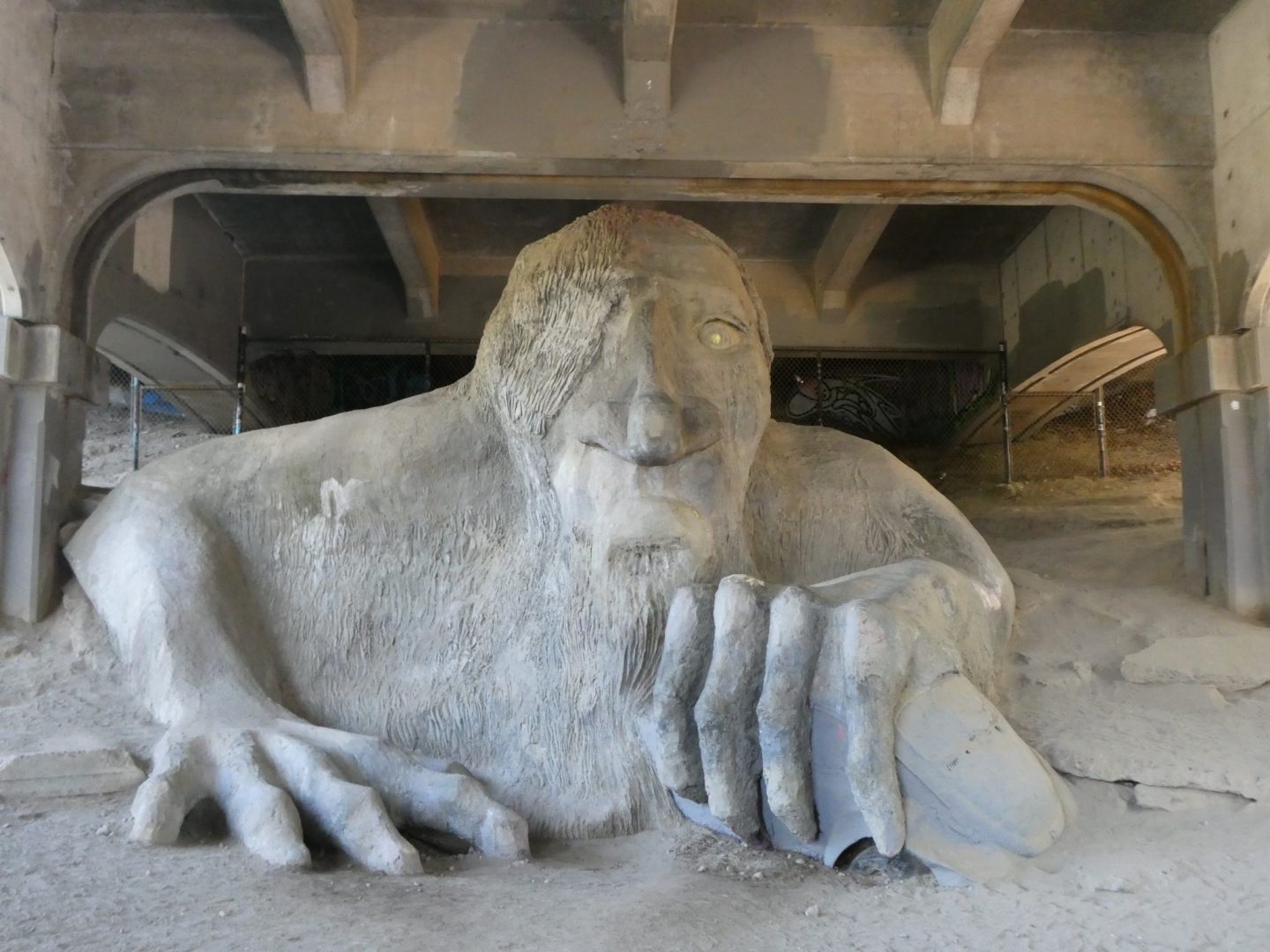 Also under the bridge is a section of the Berlin Wall which ‘arrived in Fremont in 2001 to commemorate the role of Seattle and Boeing’s C-47 in the Berlin air lift of 1948’. 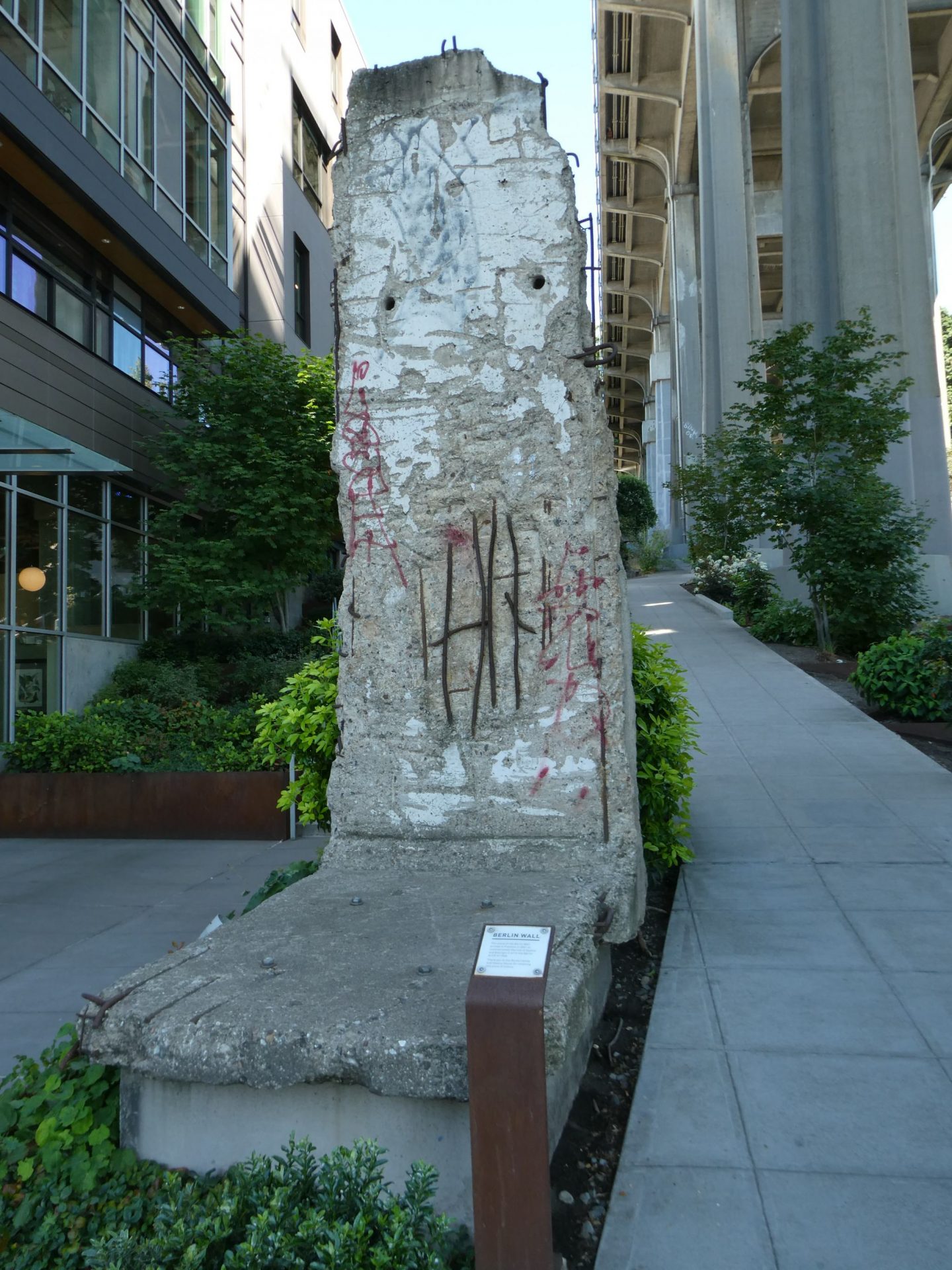 The suburb has a village atmosphere and feels like maybe it was home to STEM academics from the university in the 1980s.  The sort whose brains are so big that when they get drunk they solve the questions we mere mortals aren’t even smart enough to frame let alone answer.  Like the Fremont scientists who, after debate at a local ale house in 1991, determined that the centre of the universe is at the intersection of Fremont Avenue and 35th Street.  It’s now official. 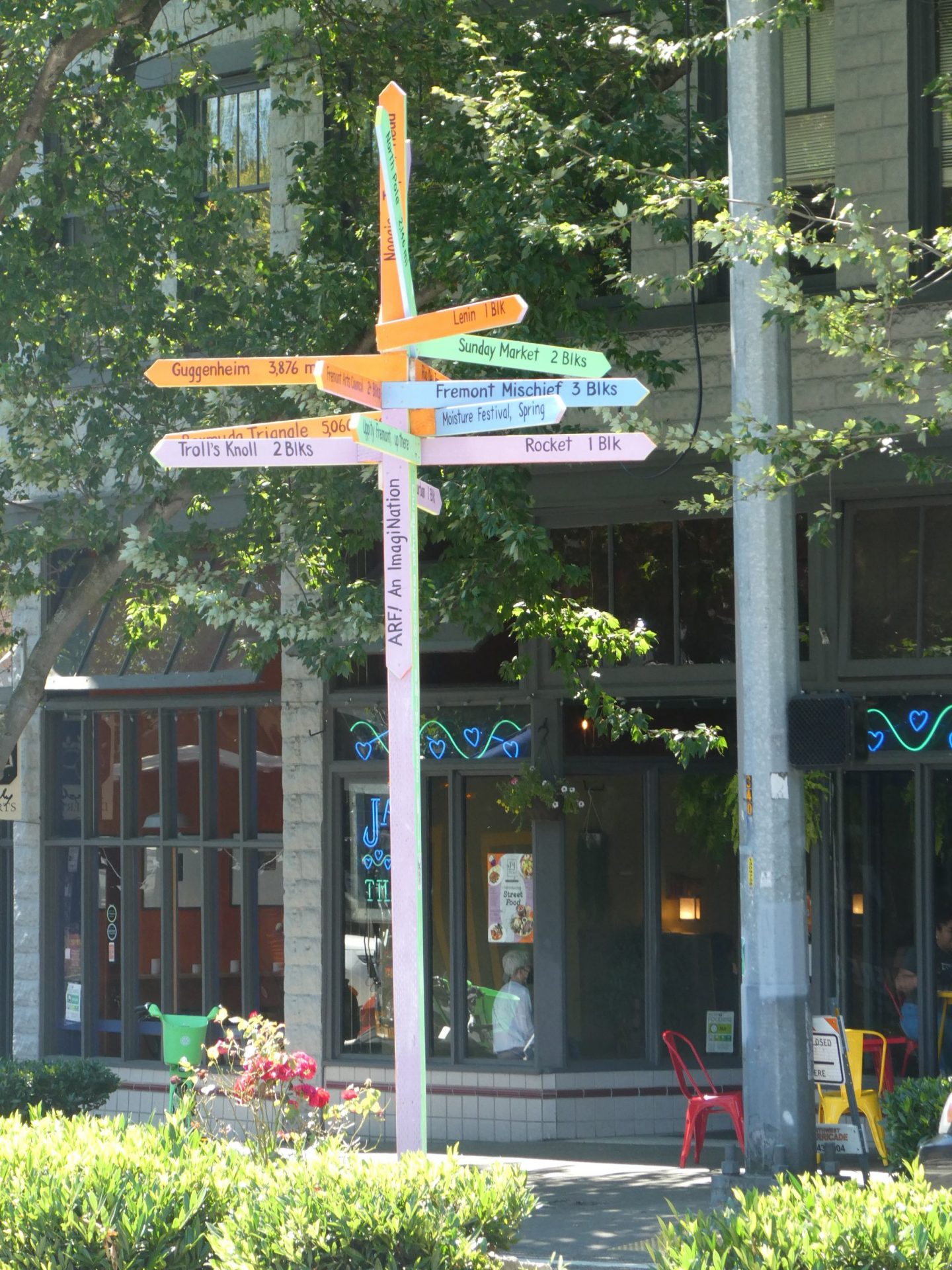 They later engineered (pun intended) the acquisition of a circa-1950 Cold War rocket fuselage which was installed a block away “just off the centre of the universe” to further mark the spot.  And for good measure, a local developer who admitted to spending his hippy youth in Fremont, added a Saturn on the building across the road. 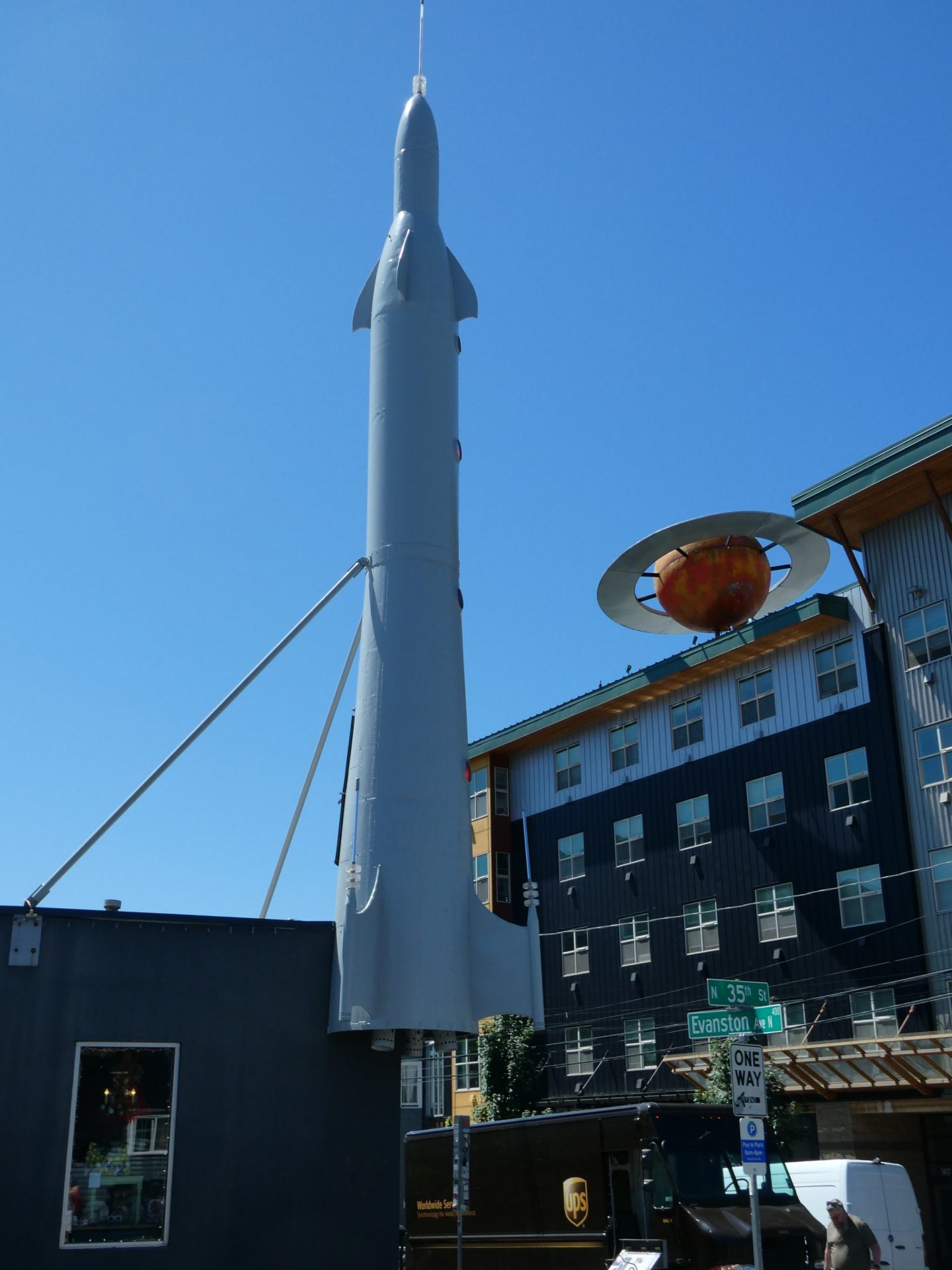 Nearby is a larger-than-life size statue of Lenin.  The 5 metre tall bronze was initially erected in the Czechoslovak Socialist Republic in 1988.  After the USSR crumbled, it was torn down and in 1993 an American found it in a scrapyard, brought it home to Washington but died before he decided what to do with it.  It was erected on this street corner in Fremont in 1995 on a temporary basis, awaiting a buyer, and has remained ever since.  Frequently vandalised, at the moment it’s splashed with blue and yellow paint, the colours of the Ukraine flag, with red paint on the hands, a not so subtle statement about Russia having blood on its hands. 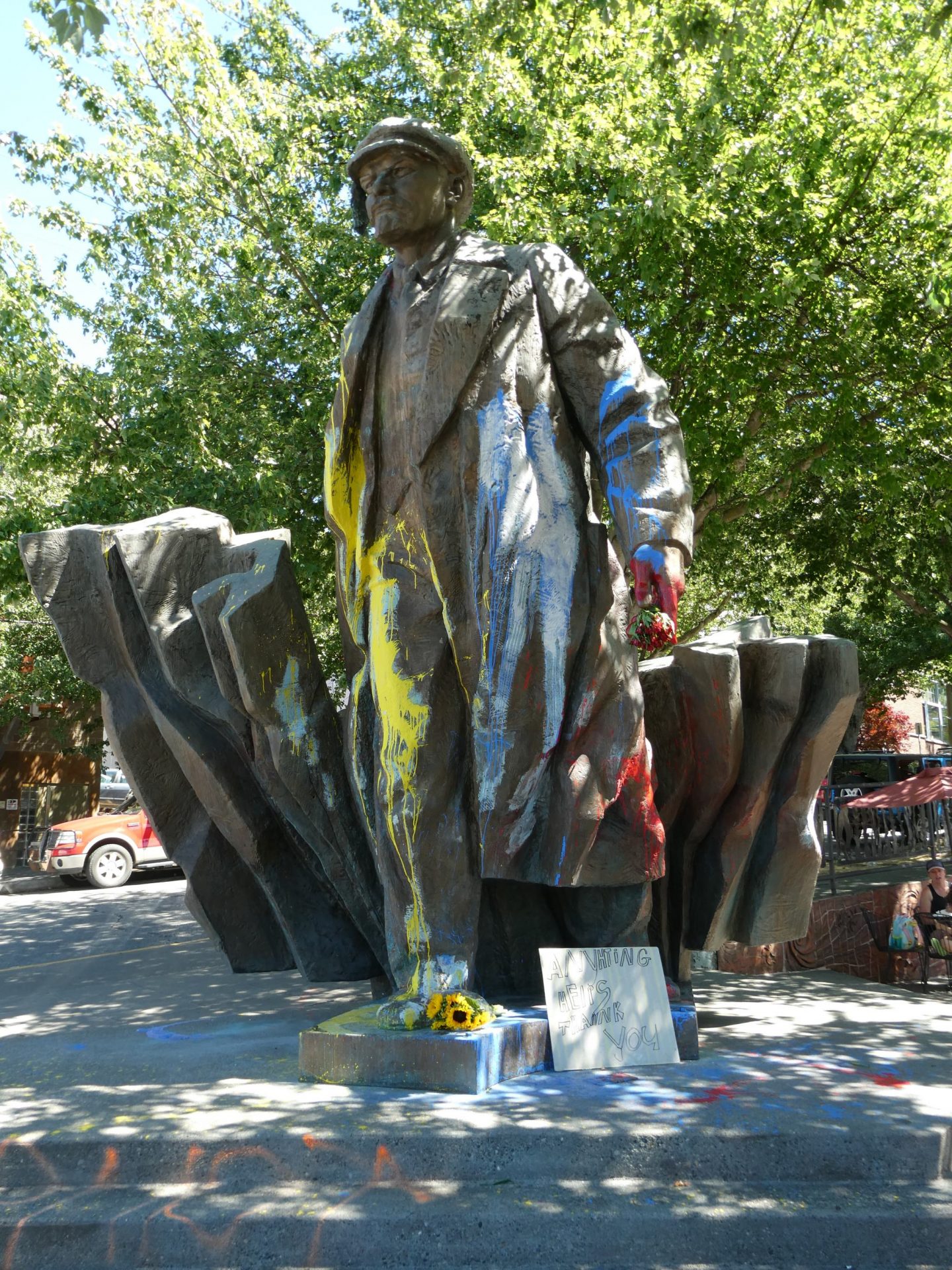 And a few other lighter ones.  These two are near the bus route and are called Waiting for the Interurban and Late for the Interurban, the latter being a tribute to J P Patches, a clown who was the main character in an Emmy Award winning Seattle children’s TV show which ran from 1958 to 1981. 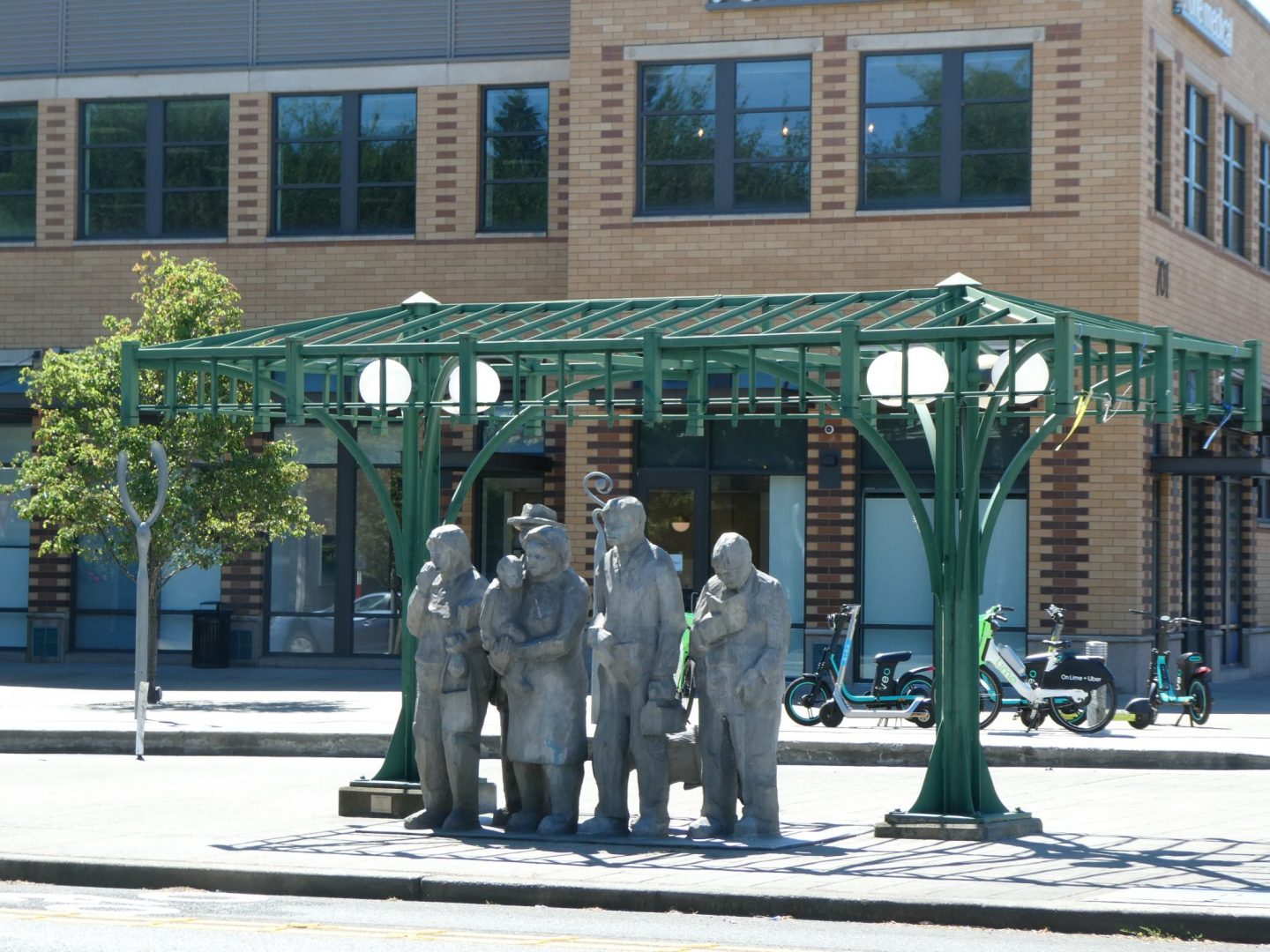 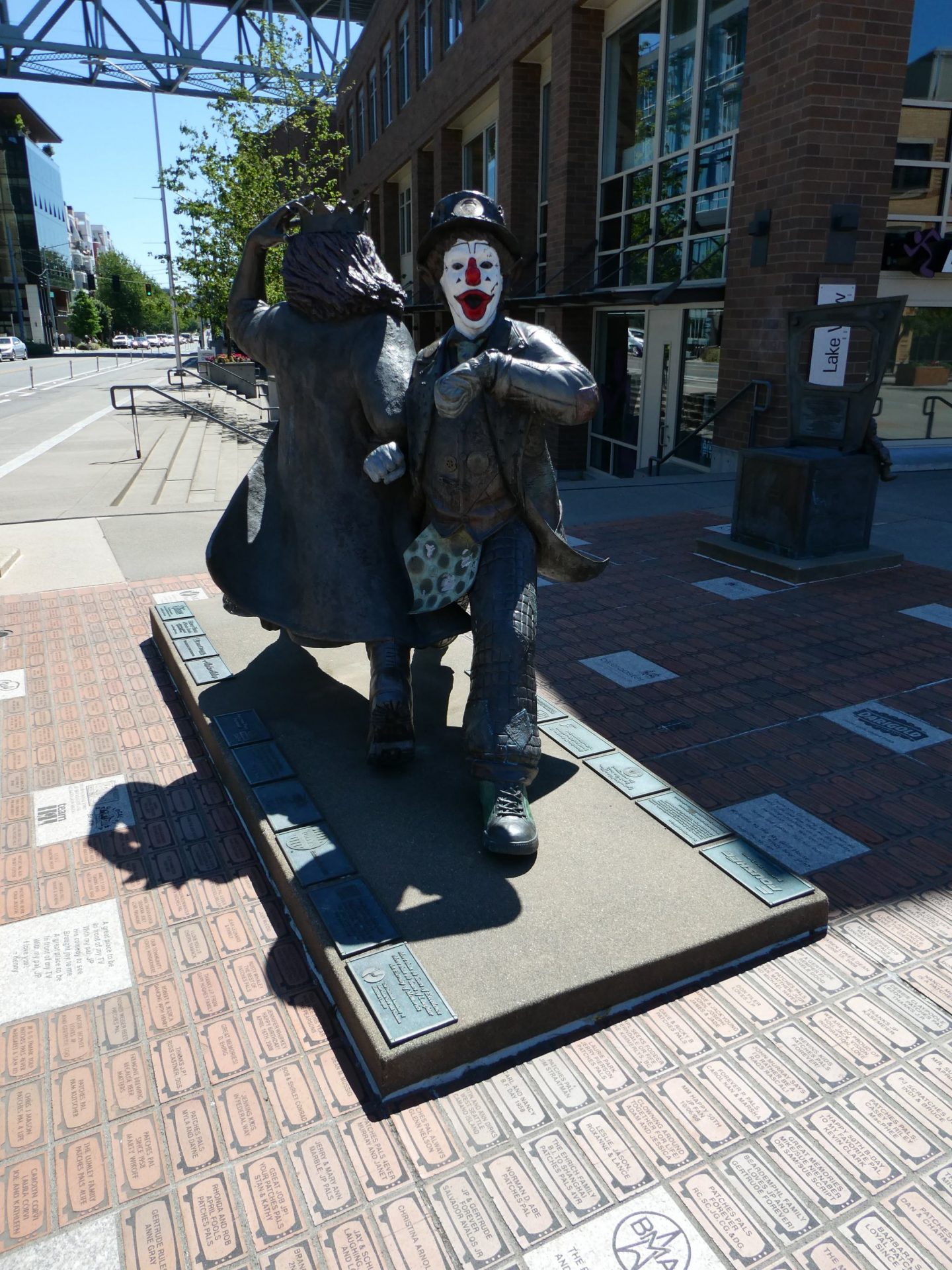 First erected at Seattle’s Pacific Science Centre in the 1980s, two topiary dinosaurs called Mama and Baby Apatosaurus were destined for destruction until purchased for $1.00 by the local Artists Republic of Fremont.   Transporting the 5 ton, 22 metre long creations to Fremont was considerably more complex, and then it took more than 12 years for the ivy to grow and fully enclose them.  They look pretty fine now.  Fossilised footprints of the apatosaurus were first found in Colorado, and the plaque next to the topiary declares these are Mama and Baby plodding along together on their way to Fremont. 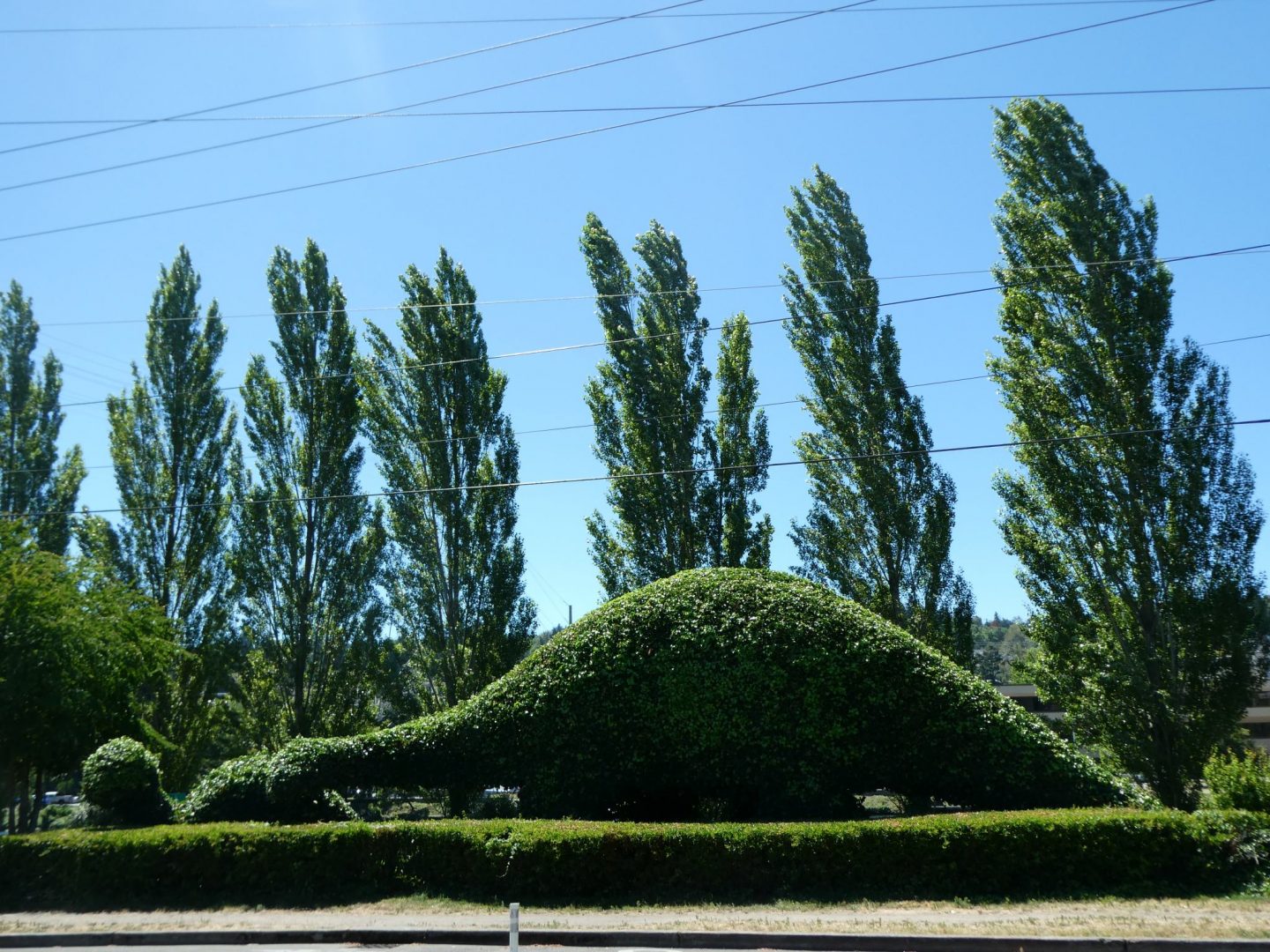 And lastly, back in the city, we visited the Amazon Spheres.  Amazon is Seattle’s largest private employer and has over 40 office blocks.  Opened in 2018, these four storey high intersecting spherical domes house 40,000 plants.  Mostly it’s thinking space, meeting rooms and retail space for Amazon employees.  Members of the public can enter on limited guided tours for “a taste of our peculiar culture and customer obsession”.  No thanks.  And even if you don’t feel like making the richest man in the world even richer by paying to tour his head office, apparently everyone is supposed to be grateful to him for building the thing because it would have been cheaper for them to move to the suburbs.

Unsurprisingly, the media nicknamed it ‘Bezos’ balls’.  But there are three spheres.  Does Jeff Bezos have three balls?  Maybe he does.  He certainly has more of everything else than anyone else on the planet. 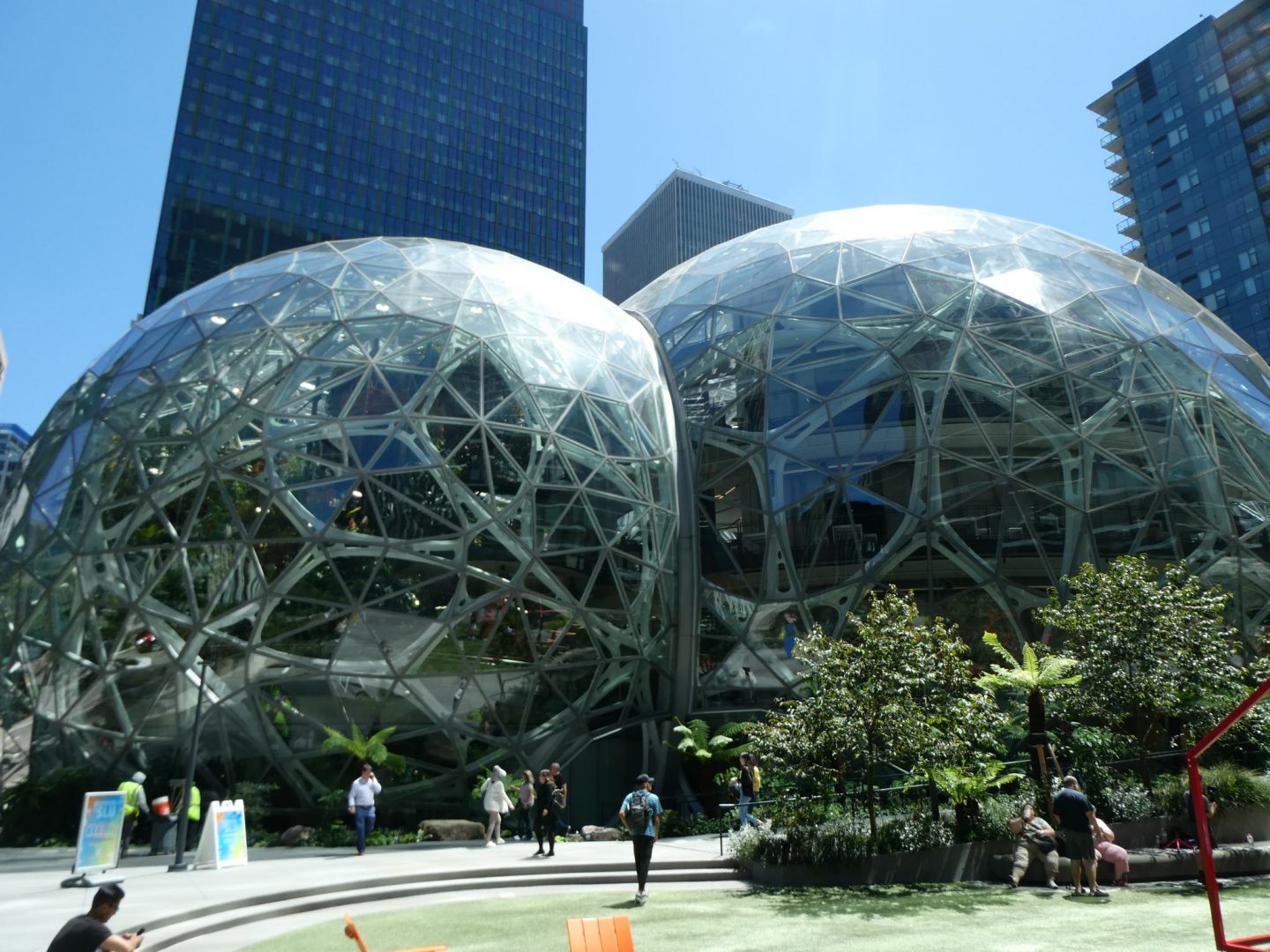