The high-speed Victoria Clipper catamaran will zip you from Seattle to the city of Victoria on Vancouver Island in less than three hours.

One of the oldest European-founded cities in the Pacific North West, Victoria was established by the British in 1843 as a trading post for the Hudson’s Bay Company, a fur trading enterprise operating under English royal charter.  When gold was discovered on the mainland in 1858, it became the port, outfitting centre and supply base for a rush of would-be miners heading there.  It swelled in size from 300 to 5,000 in just a few days.

Of course, gold rushes never last and the opening of a railway on the mainland destroyed much of Victoria’s importance as a trading port.  But the boom left Victoria with a swag of buildings which hark back to that heyday.  And due to a few quirks of history, it and not the much larger city of Vancouver on the mainland, is the capital of British Columbia.

The neo-Baroque BC Parliament Buildings and nearby chateau-styled Fairmont Empress Hotel dominate the inner harbour as you sail in. 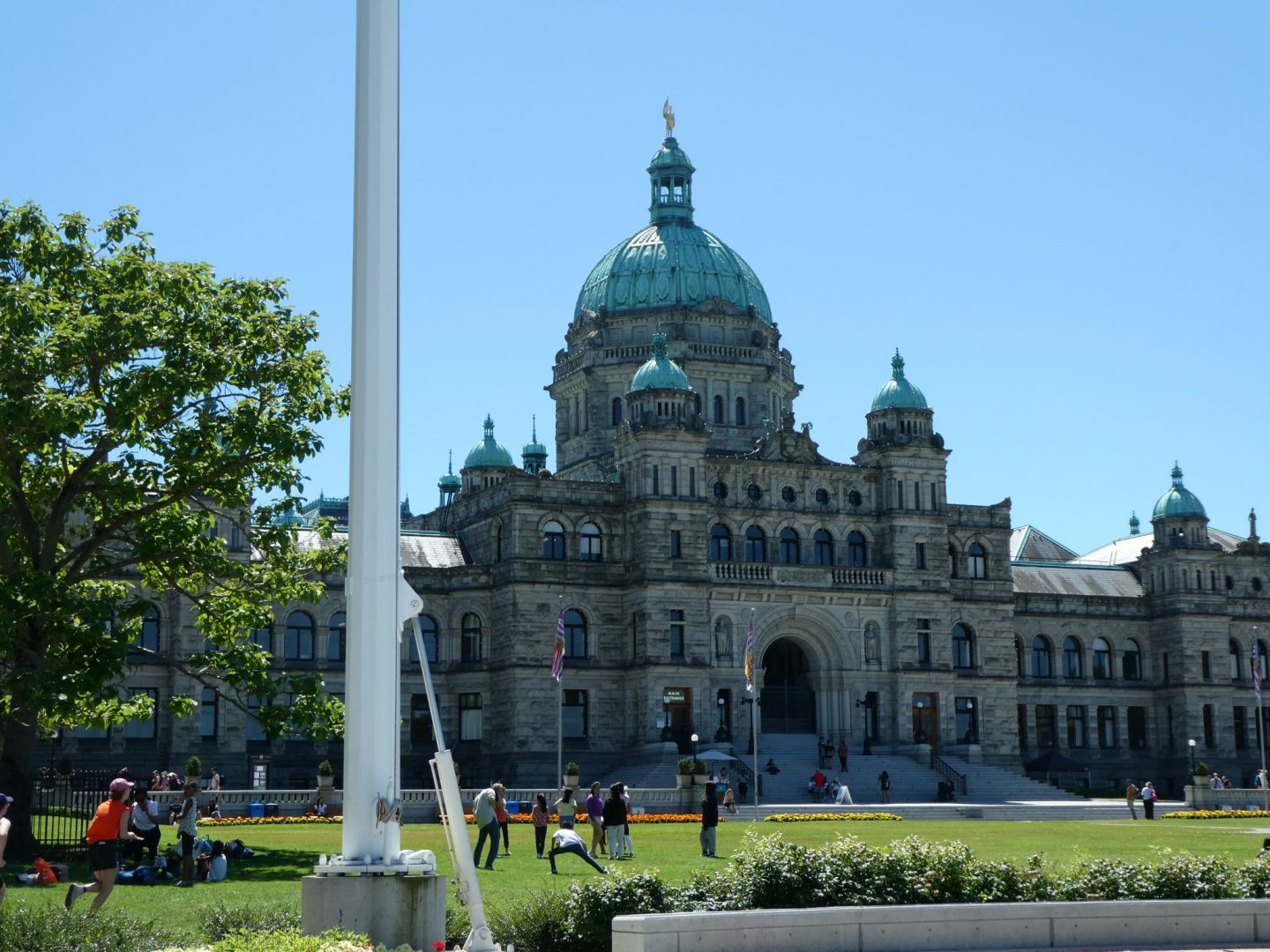 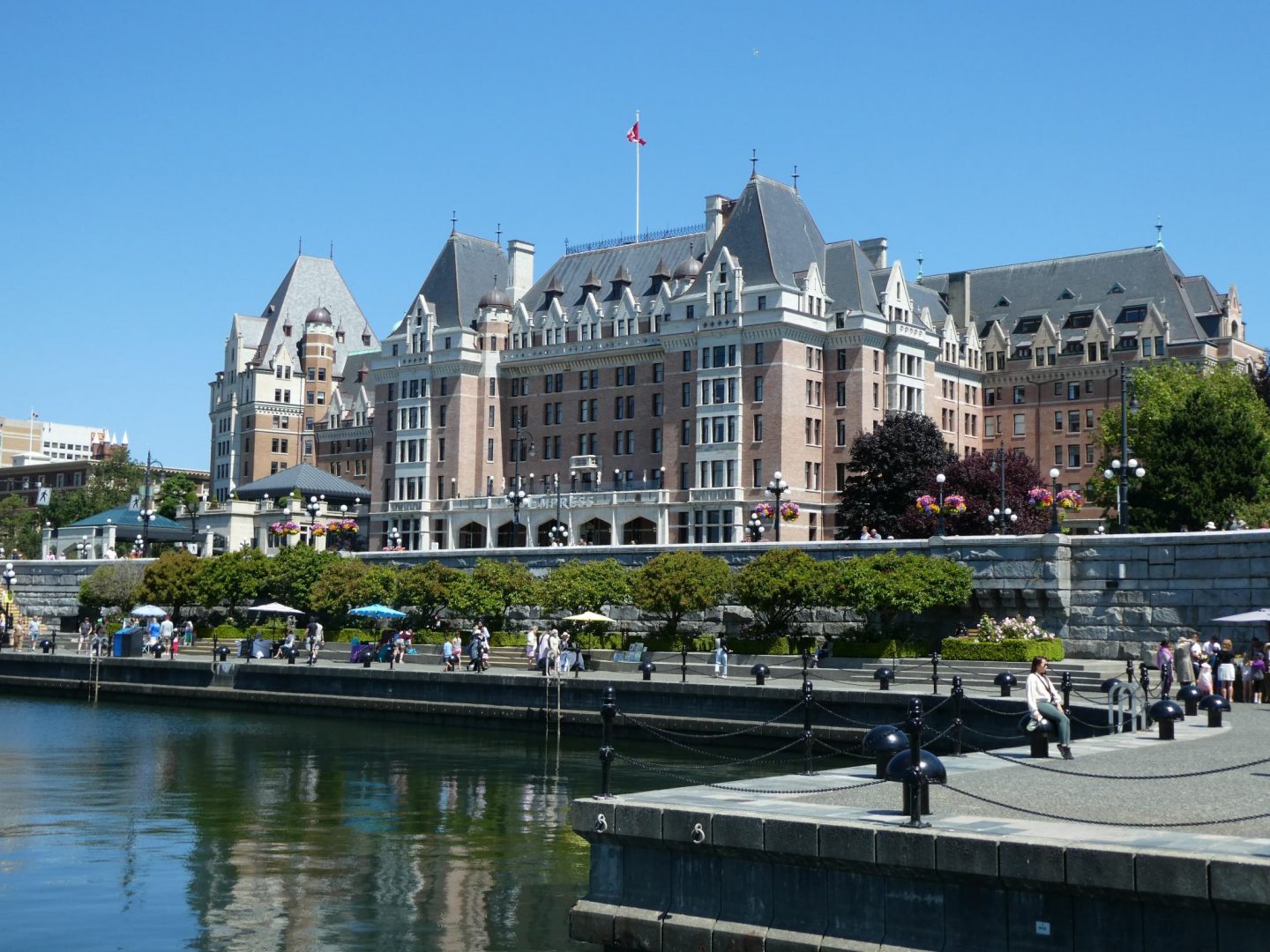 The city still has, and capitalises on, it’s ‘British-ness’.  You can take high tea at the Empress or have tea and scones at many other tea shops in town.  There’s pubs with names like The Sticky Wicket.  Fish and chips is standard on every menu.

Victoria was full of tourists but somehow it still feels laid back.  Maybe it’s the Mediterranean climate, but there’s no feeling of hustle and the locals seem to have a strong sense of humour.  Like this sign outside the bar next to our hotel. 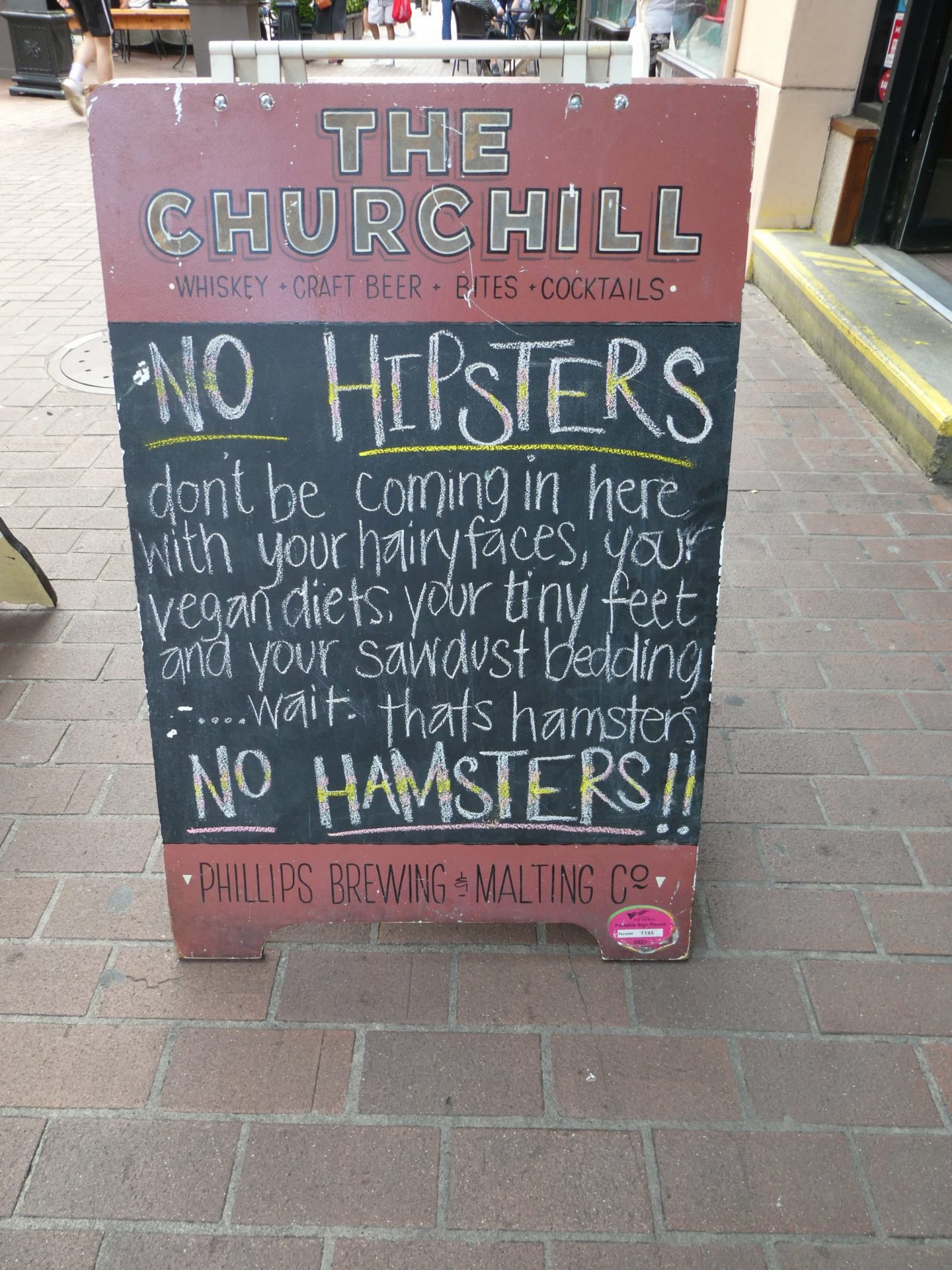 We loved these little water taxis which tootle around the harbour crossing paths with the seaplanes that fly in and out from Vancouver. 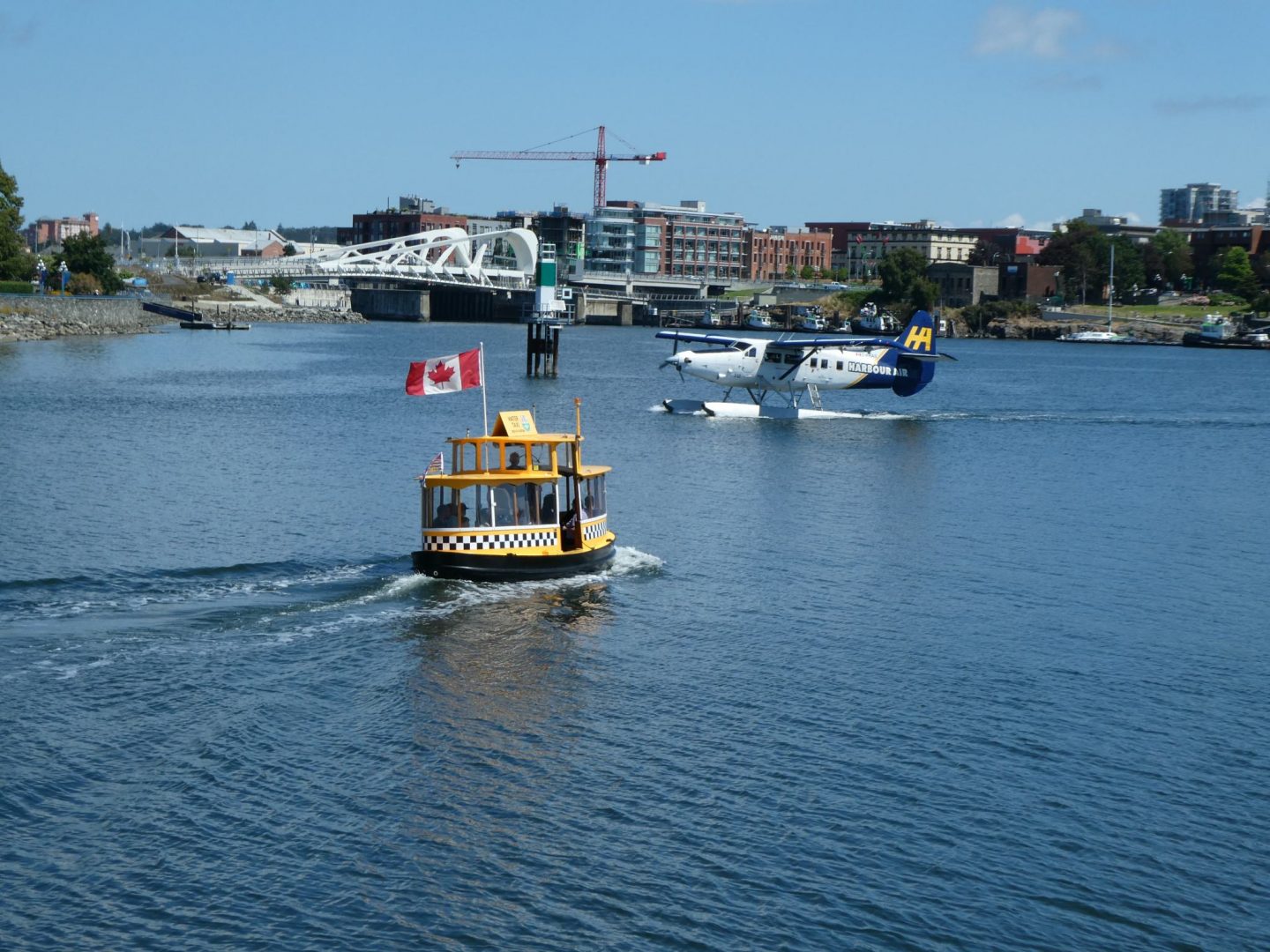 When a visiting Japanese garden designer built a tea garden in one of the area’s parks in 1907, it started a fad amongst many of the city’s well heeled.  Everyone wanted their own.  Jennie Butchart, wife of a cement czar commissioned one for the family estate. 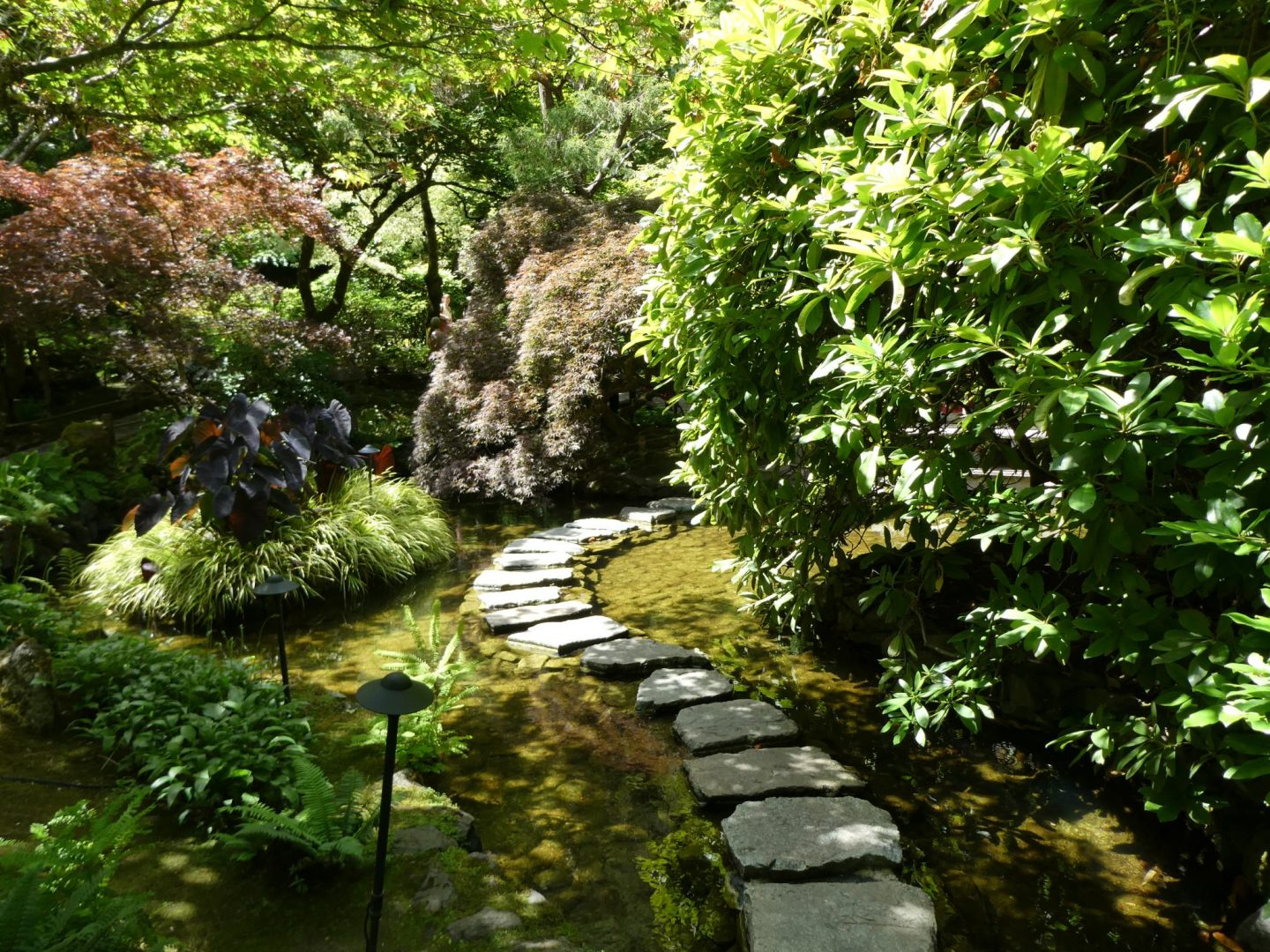 The estate was next door to the Butcharts’ limestone quarry.  A Japanese garden wasn’t enough.  When the quarry was exhausted, leaving a huge, unsightly hole in the ground, she set about landscaping it with trees, flowering plants, paths and lawns to create the Sunken Garden. 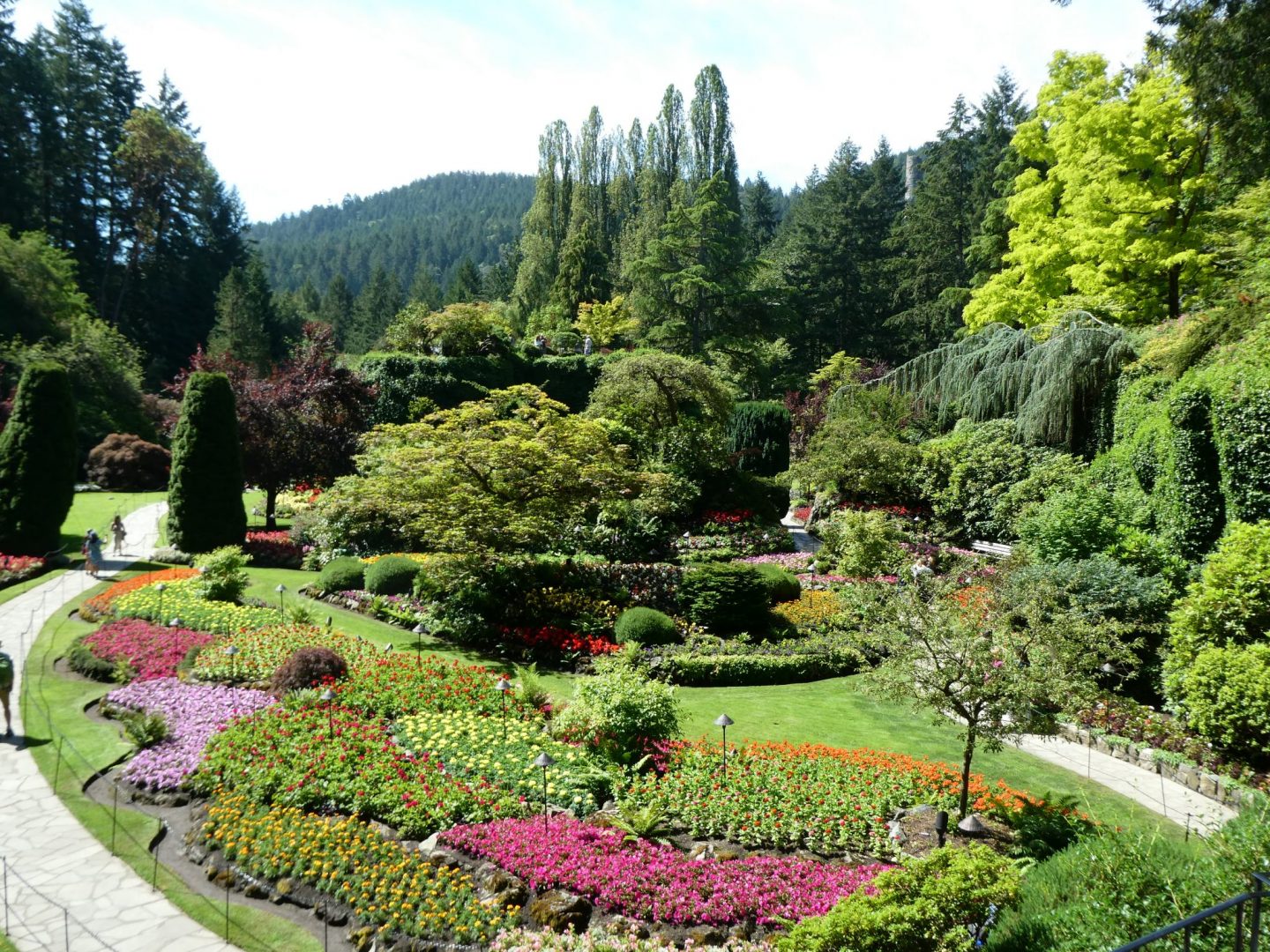 In 1921 she opened it to paying visitors.  In 1926 she replaced the family’s tennis courts with an Italian Garden. 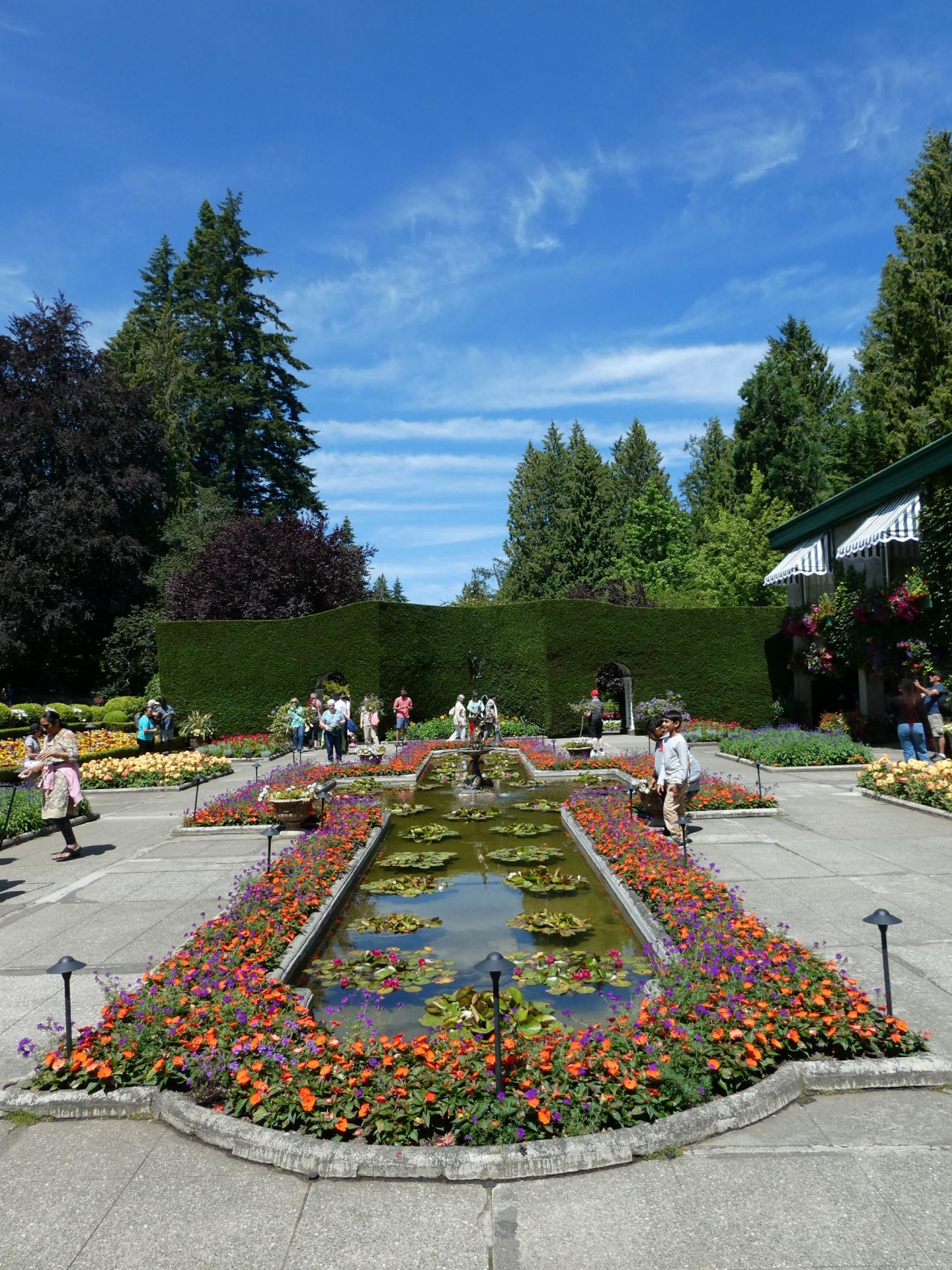 And in 1929 she replaced the kitchen garden with a huge rose garden. 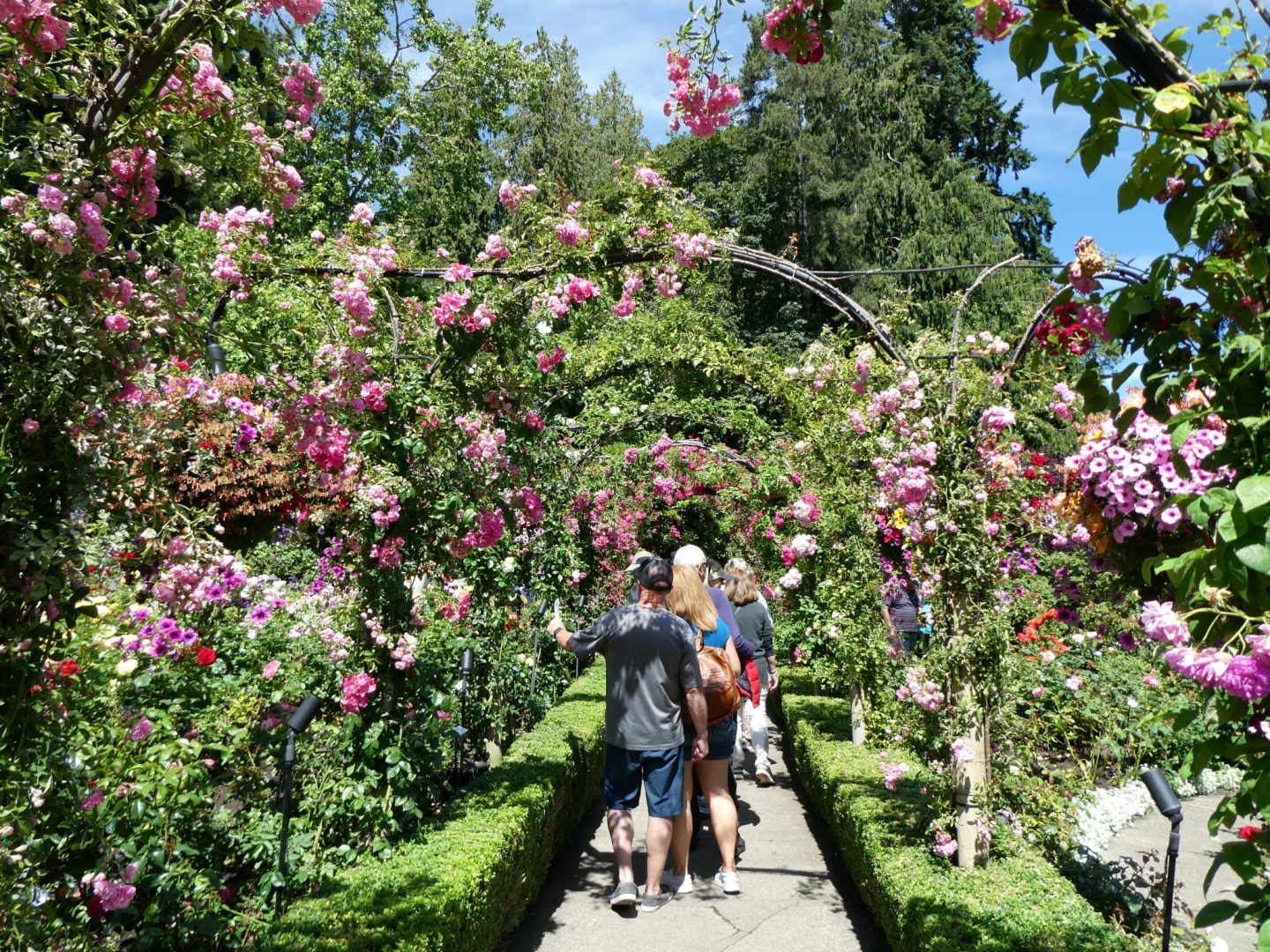 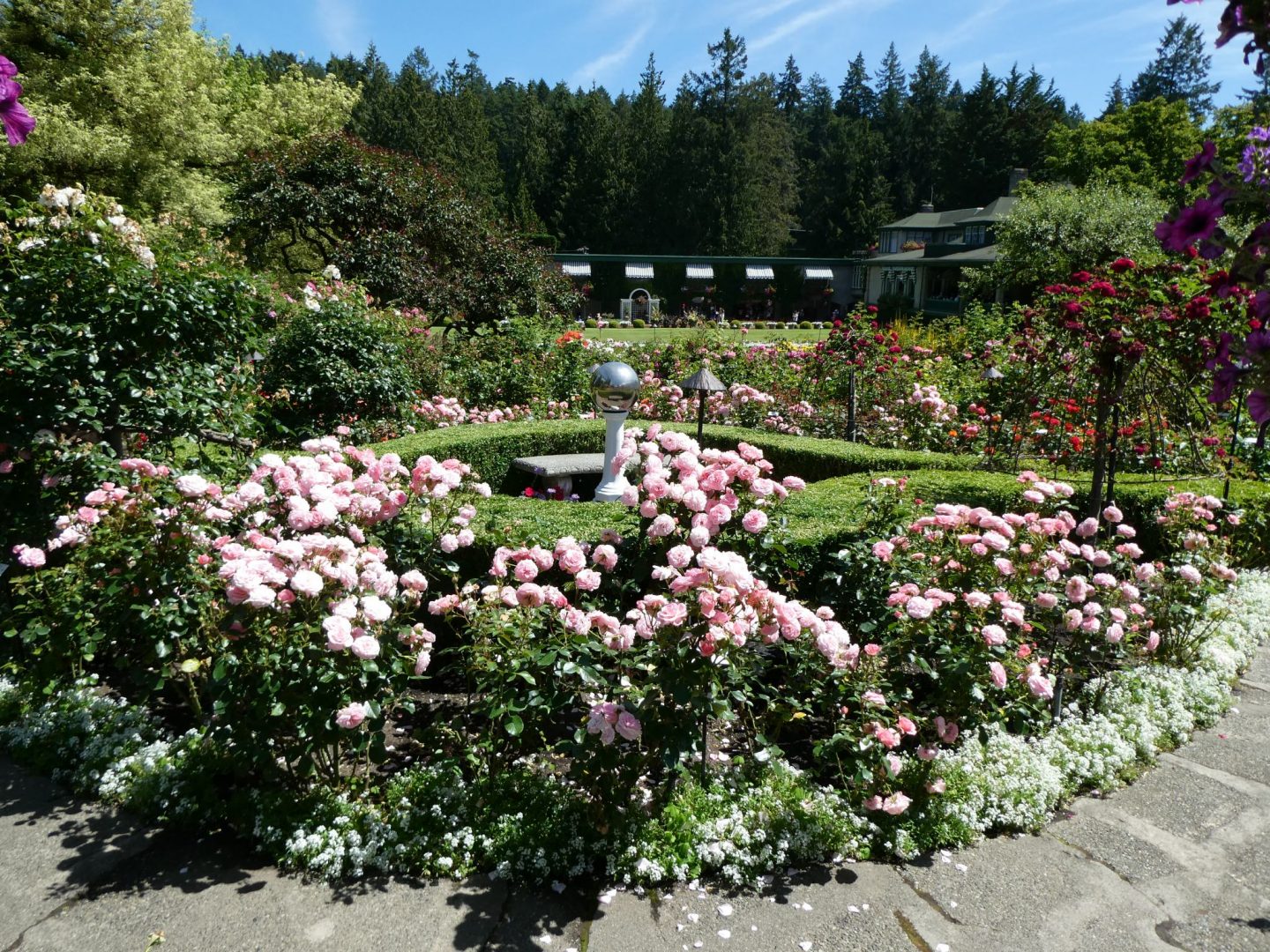 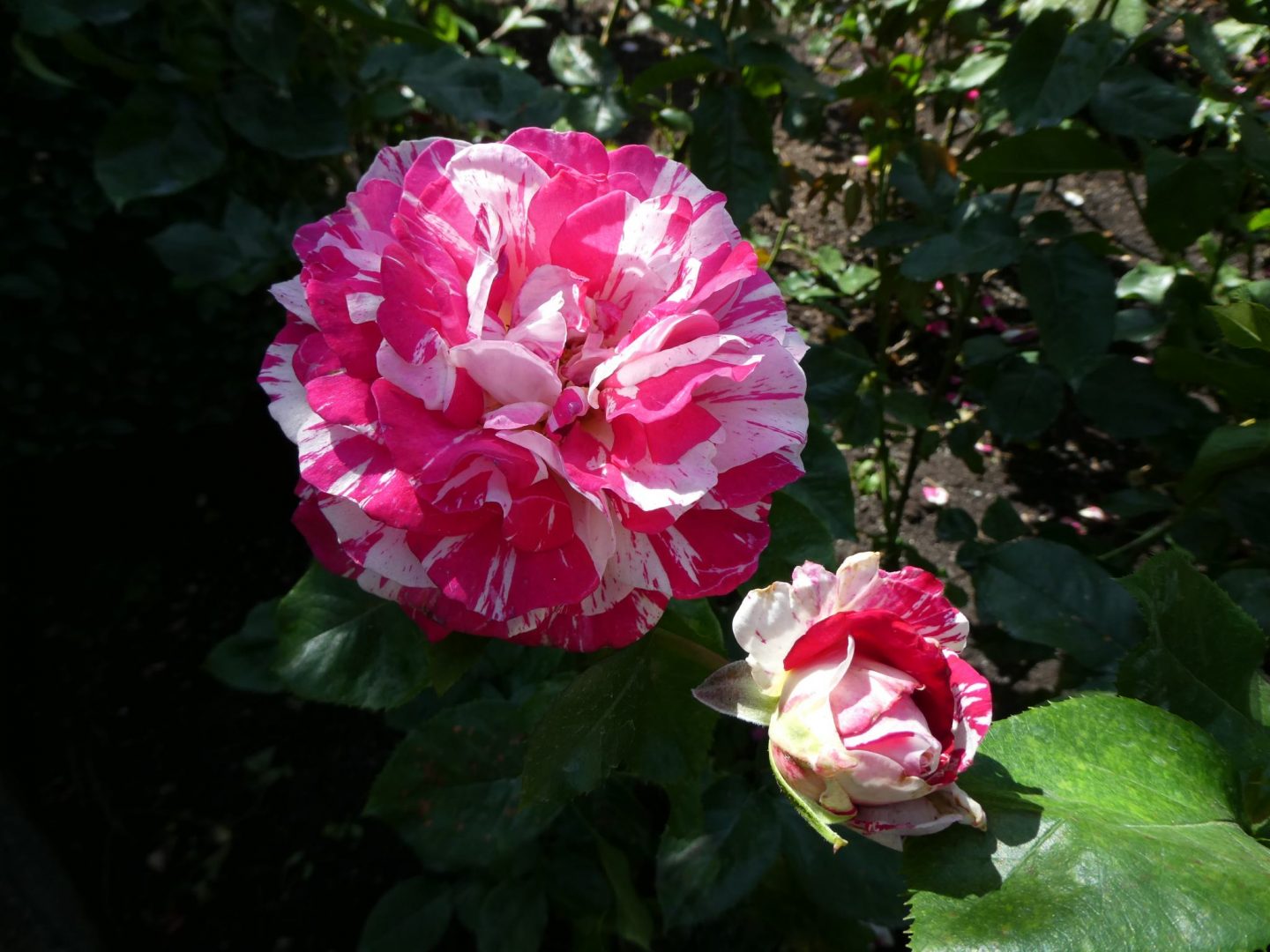 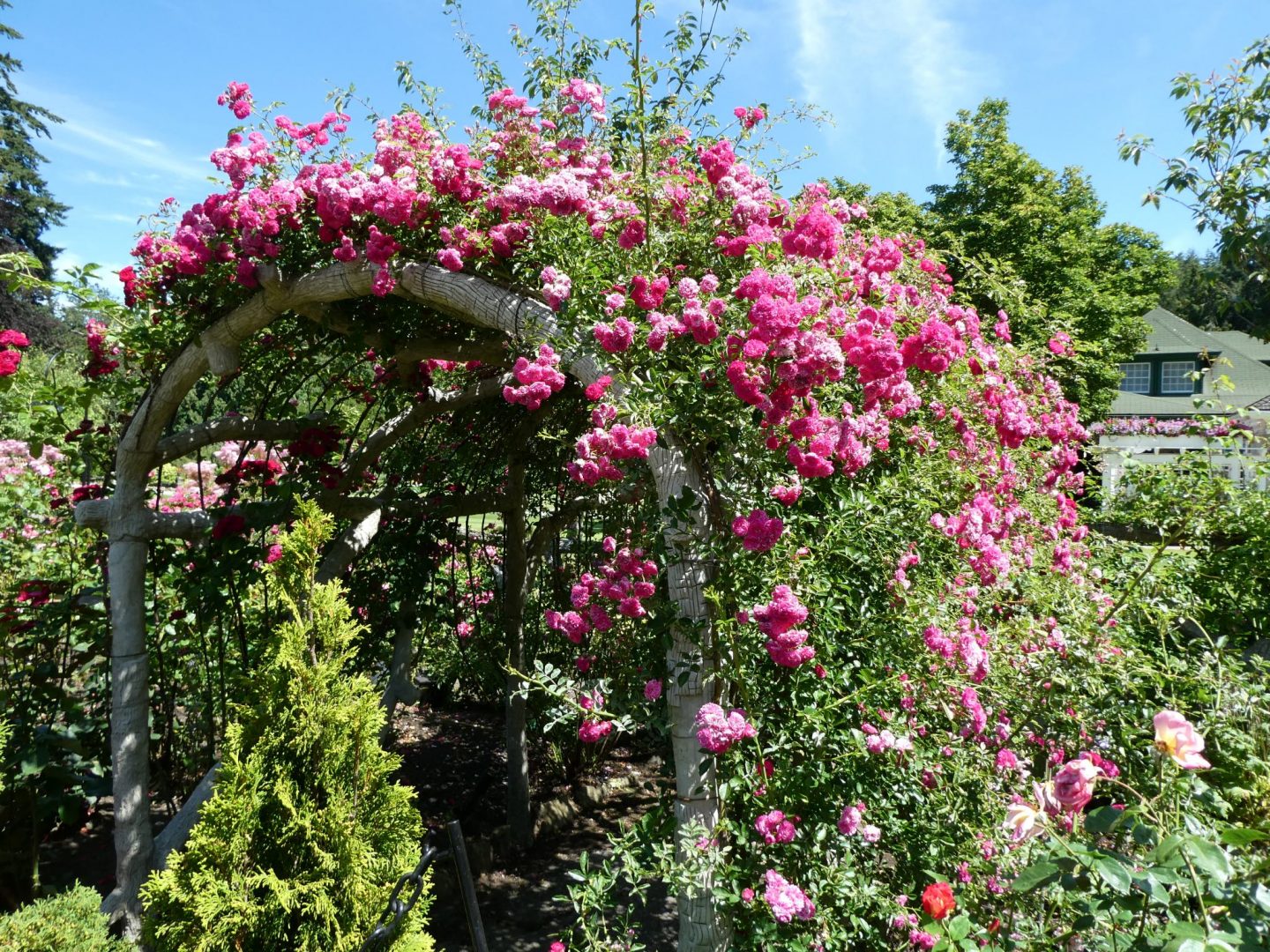 No more tennis, no more vegetables.  Just flowers!  Was it getting a little out of control?  The couple gifted the entire garden enterprise to their grandson in 1939 on his 21st birthday.  Was he pleased?  Or would he have preferred the traditional gift of a keg of beer and his own set of house keys?  Either way, it seems to have worked out well.  The estate is still in the family, the current owner and managing director being the Butcharts’ great grand-daughter.  55 acres, 50 full time gardeners, 26 greenhouses, 900 varieties of plants, the Butchart Gardens receives over 1 million visitors each year.

We headed up the coast to Cowichan Bay, a small seaside community north of Victoria.  It’s said to get frenetic in the summer but was peaceful when we rolled through.  Lovely houseboats line the small cove. 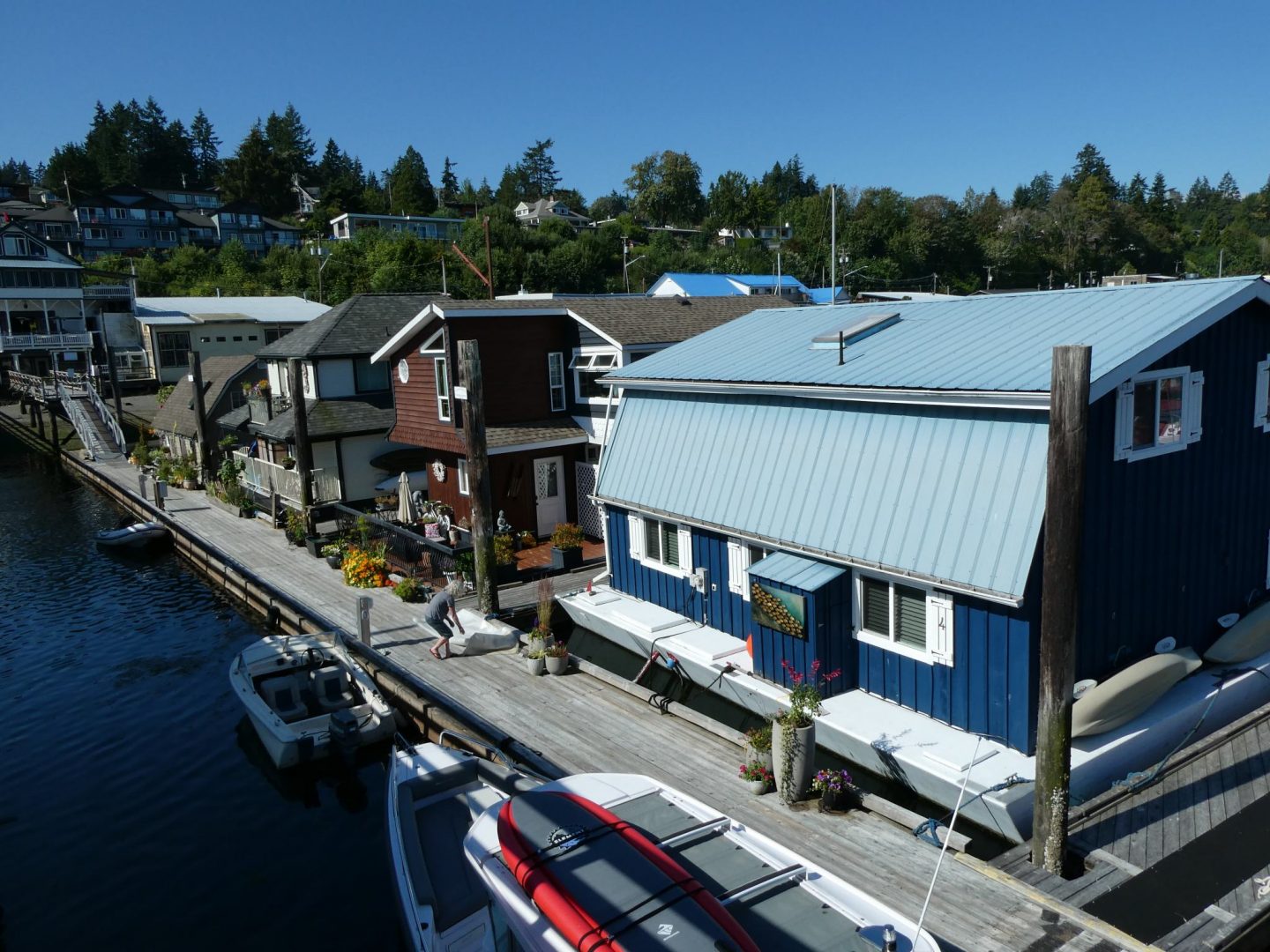 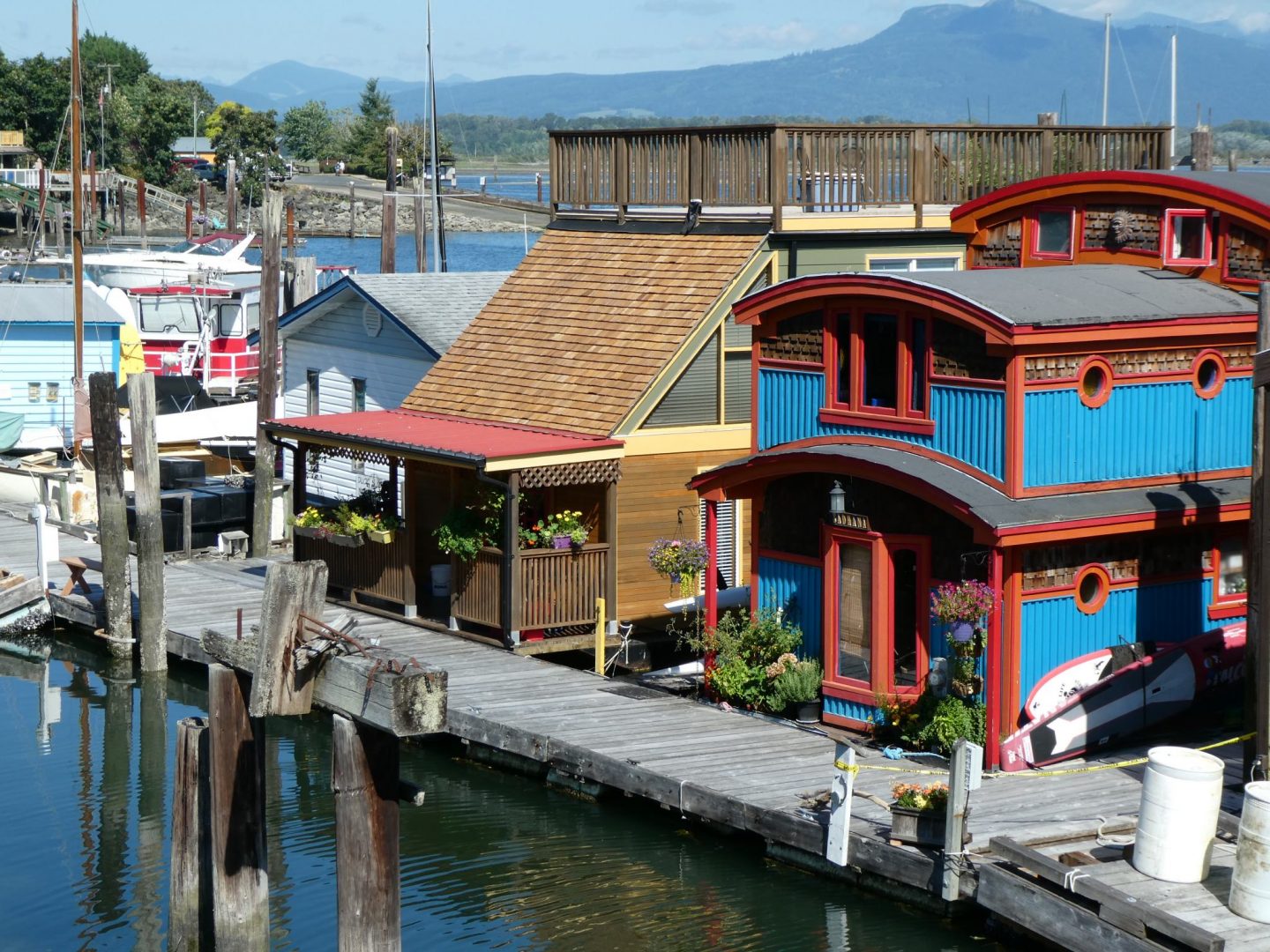 There are cute shops, cafes, fishing and boating stores and a delightful little museum run by the Cowichan Wooden Boat Society. 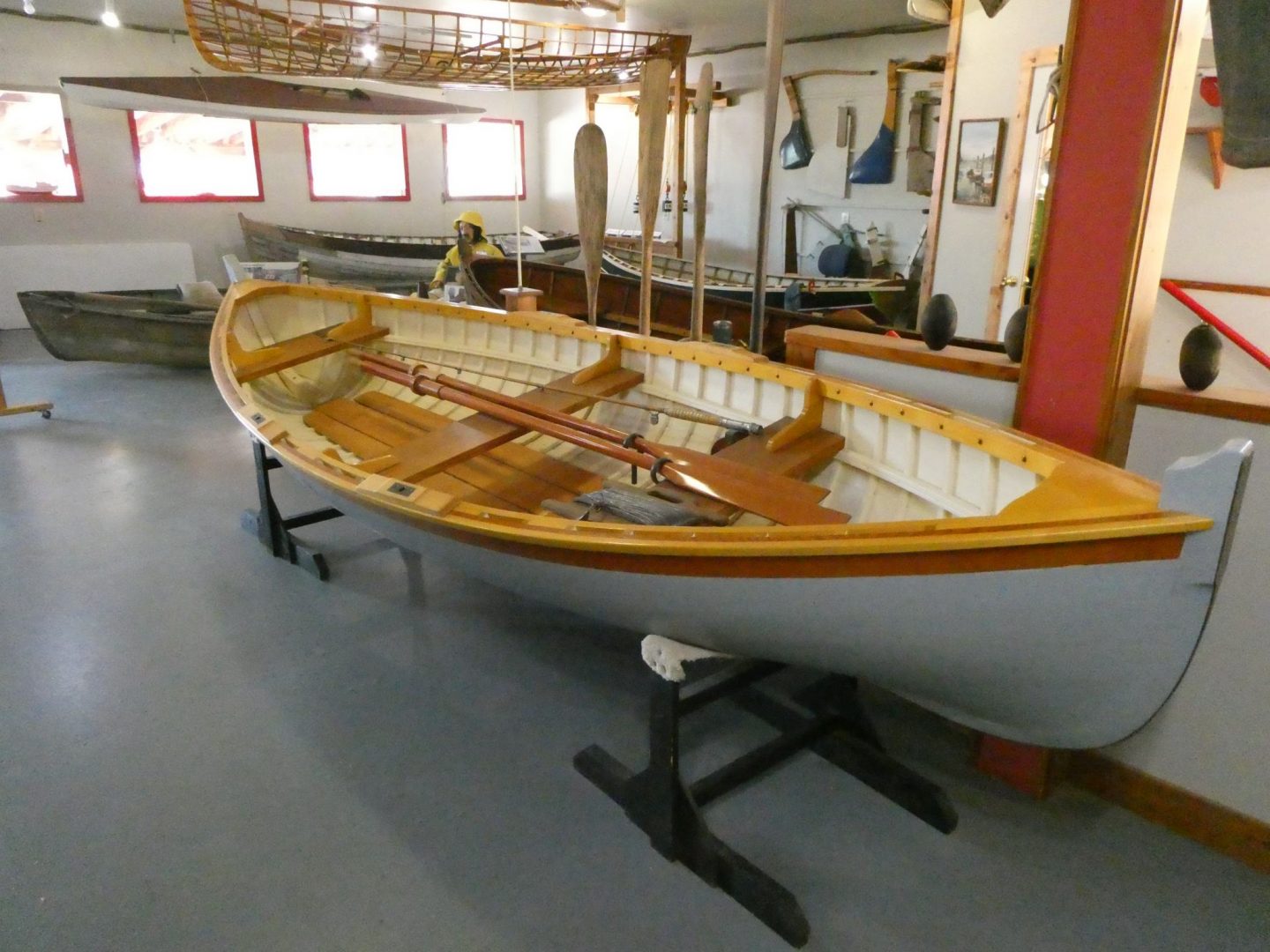 Further north is Chemainus.  Once a thriving timber town, Chemainus found itself in danger of withering away when the last saw mill shut in 1983.  Refusing to bow to such a fate, the local council commissioned a huge mural depicting the town’s history, over time adding about 45 more murals, dotted around town.  A map from the local tourist office sets out a walking trail to see them.

Hand on heart we didn’t think the murals were that remarkable, but some told interesting stories. 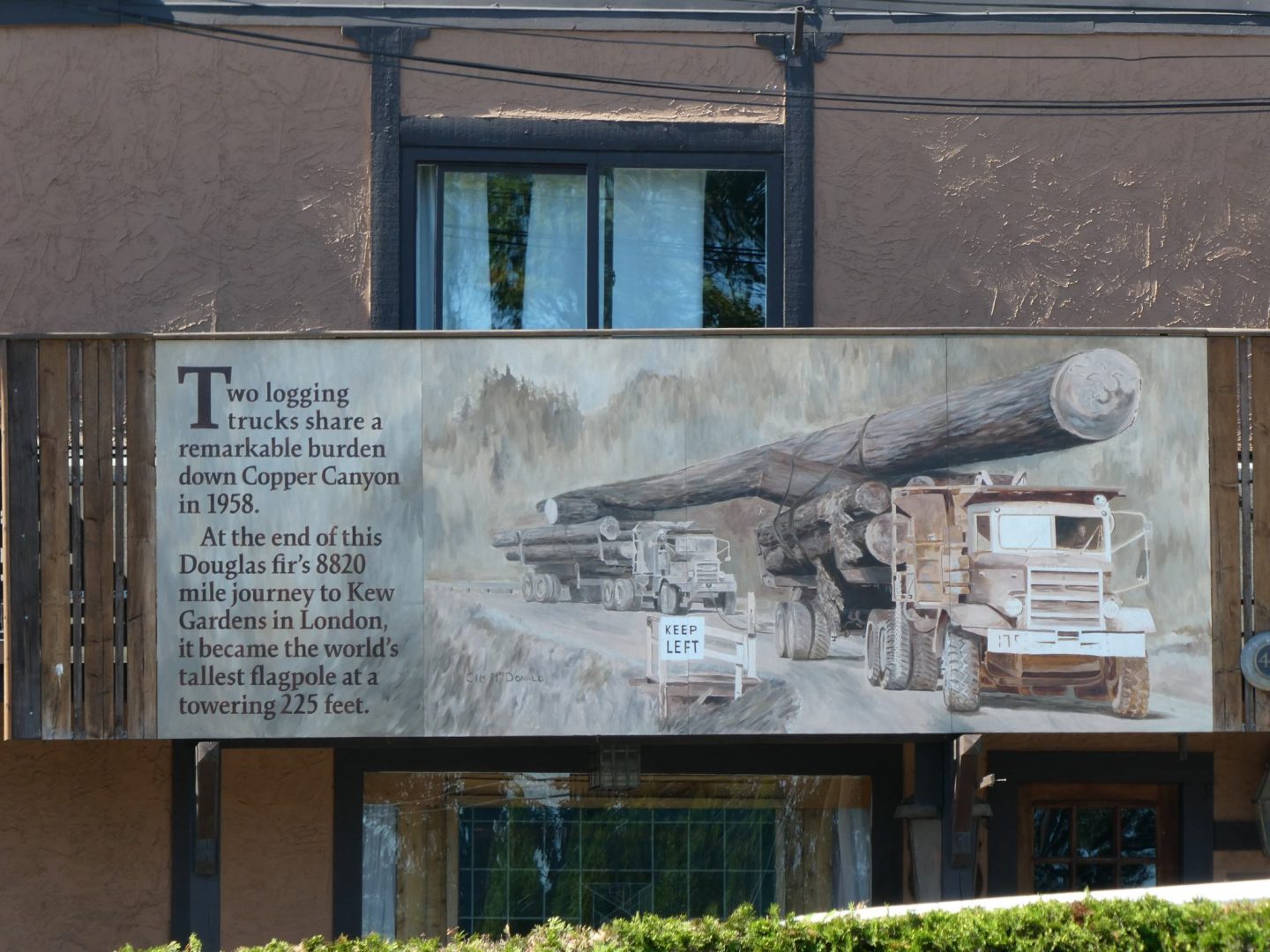 And as the mystery voice told Kevin Costner in Fields of Dreams, “if you build it they will come”.  There were quite a few people wandering around, maps in hand, checking out the murals.  The main street looks like things are going well for the town now. 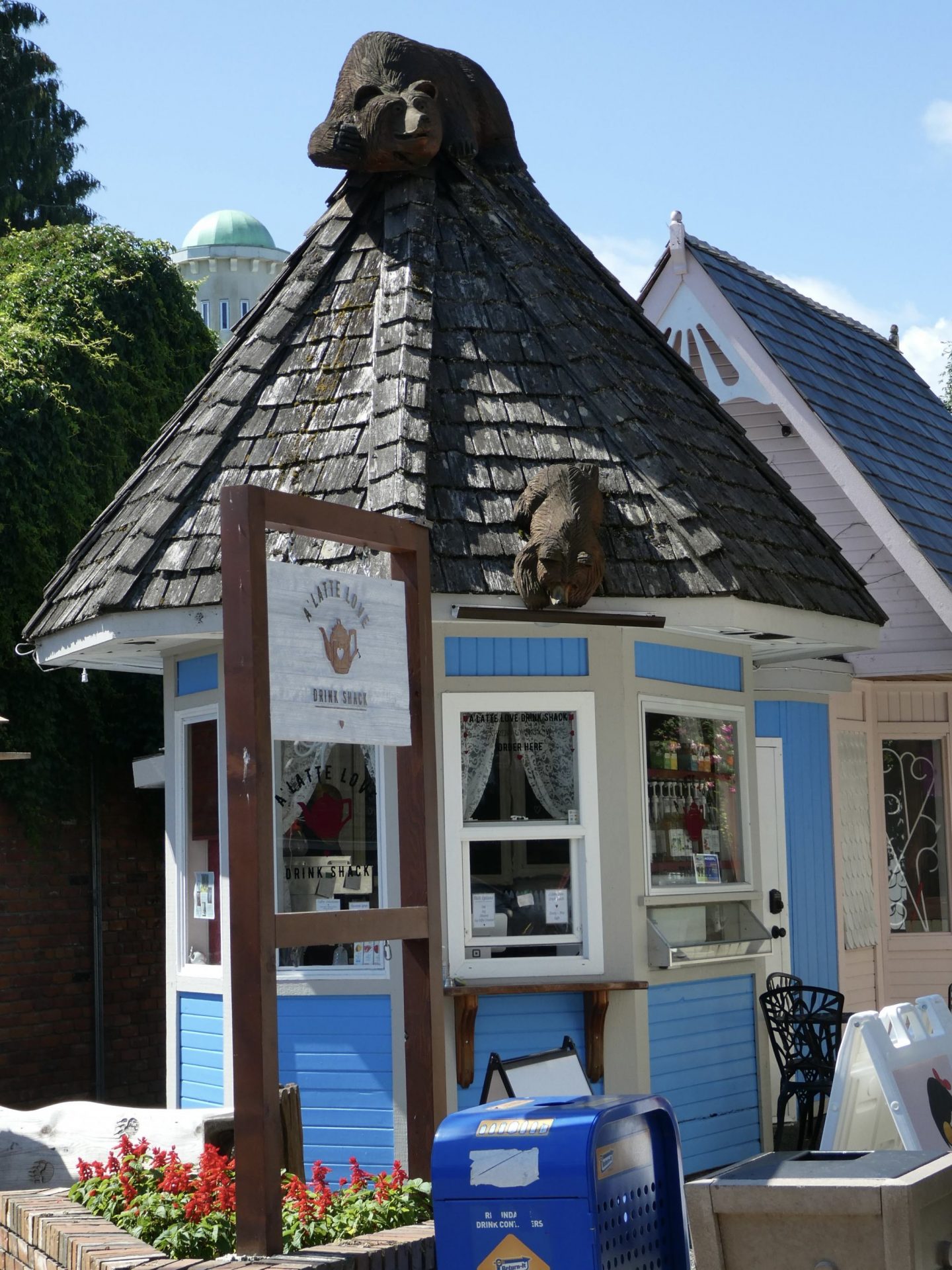 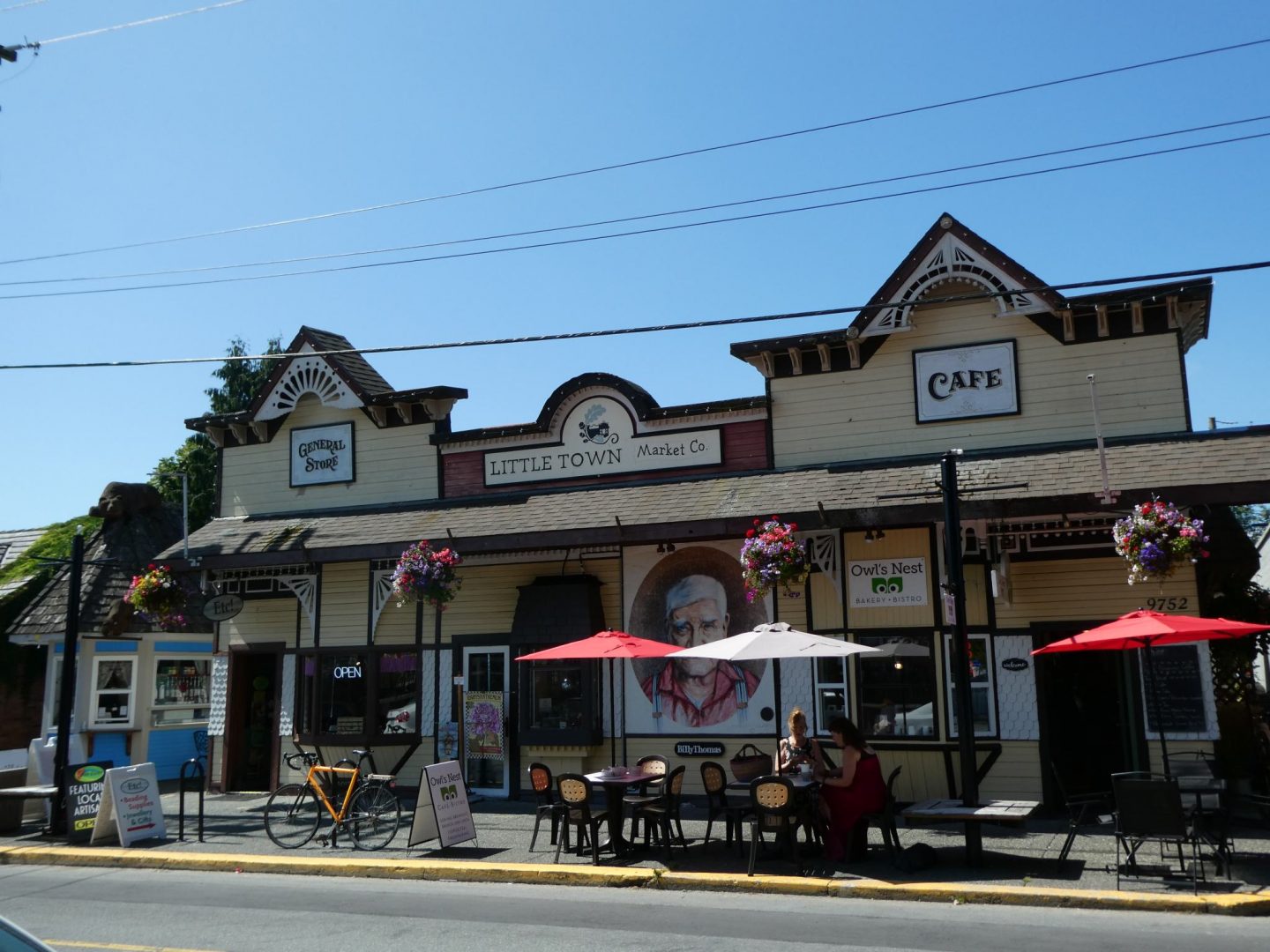 In the hinterland, the Cowichan Valley is a hot spot for foodies.  There are artisan food producers, a couple of wineries, orchards and even a cidery and distillery.  All very twee. 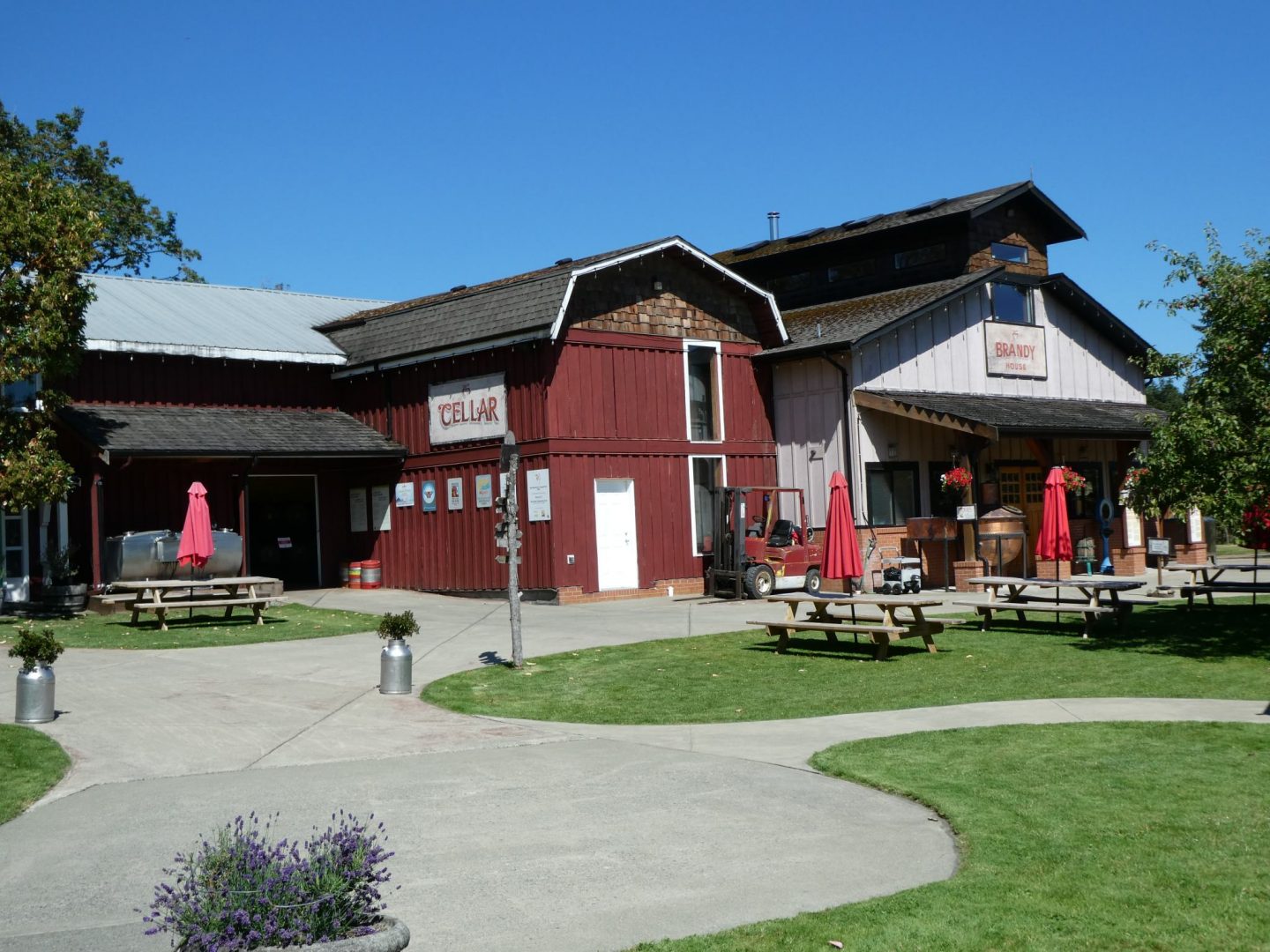 The area was extensively logged in the decades between 1880 and 1920 but the mountainous terrain made road transportation near impossible.  The answer – railways which crossed ravines by way of trestle bridges.  These were common throughout North America at the time, but the Kinsol Trestle near Shawnigan Lake is unusual.  It has a seven degree curve which apparently is an engineering feat, and at 187 metres long and 44 metres high, it’s one of the tallest free-standing railway trestles in the world.

It was only used for a short time and eventually was decommissioned in 1979.  Left to the ravages of nature, it quickly deteriorated.  It was almost demolished in the 1980s but following a grassroots campaign by local community groups and some serious rounds of fundraising, the trestle was restored.  Opened to the public in 2011, it forms part of the long-distance Trans-Canada Trail, or you can reach it via a short 550 metre walk from a nearby road. 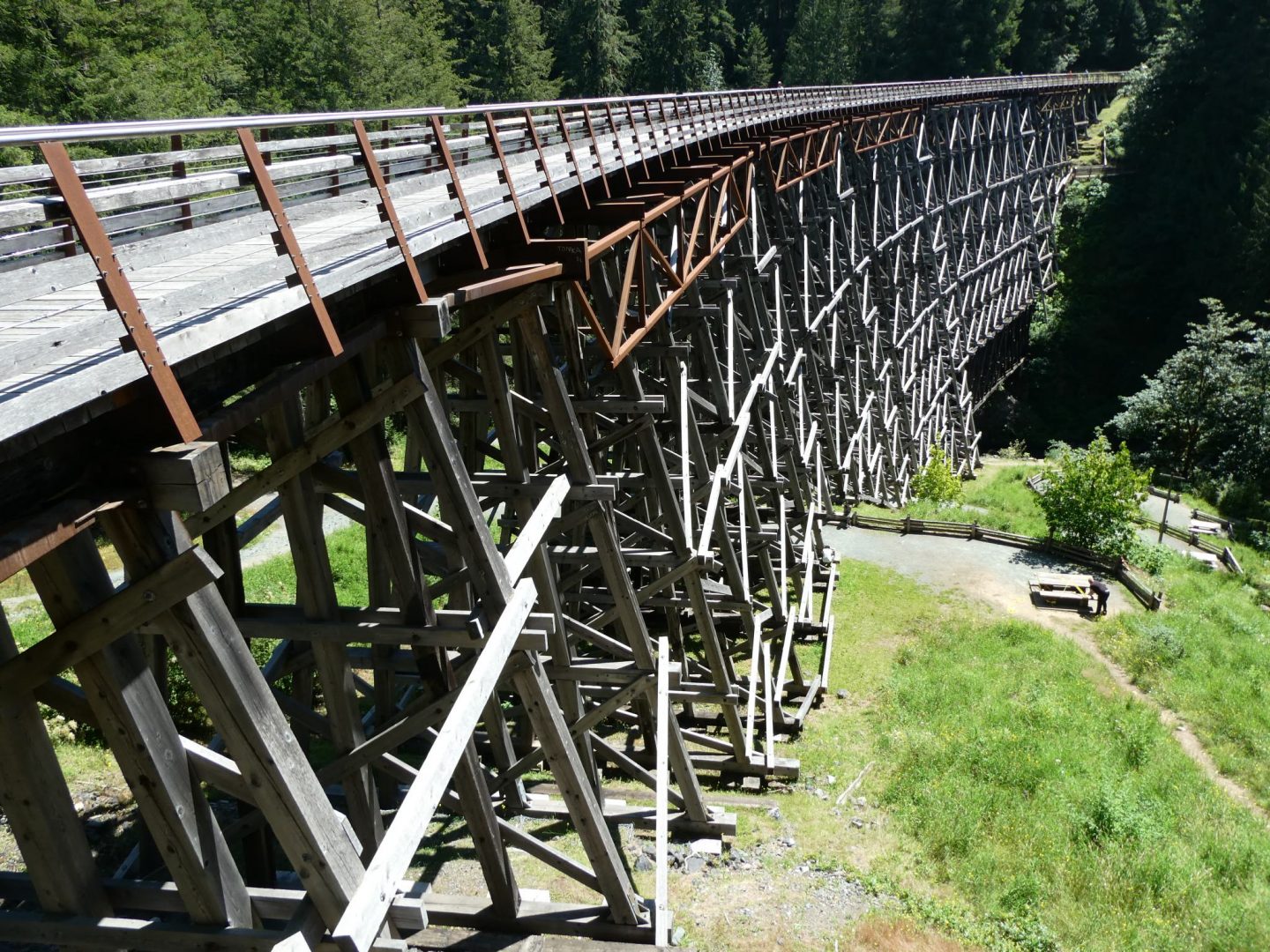 Victoria has some pleasant walking paths from the harbour.  One afternoon we walked the Songhees Walkway to the west.  We were hoping to see otters but only saw one, some distance away and almost fully submerged. 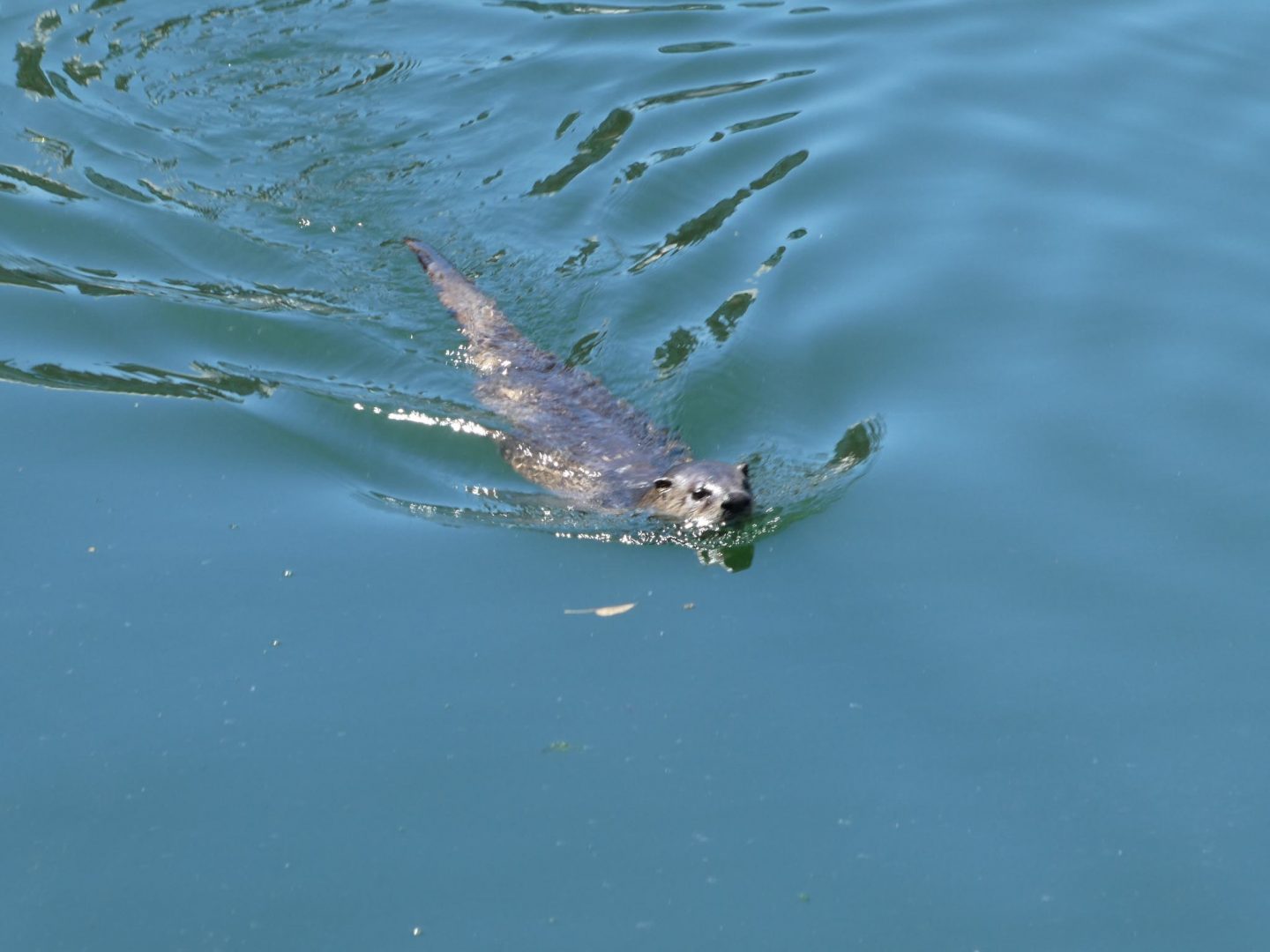 Very nice battered salmon and chips at one of the brewpubs along the path, though.

On our last day we walked in the opposite direction around the harbour and on to Fisherman’s Wharf.  Like Cowichan Bay, it has a slew of houseboats moored in the marina, but these are now almost exclusively given over to holiday rentals.  Lovely to look at, but no longer authentic fishermen’s shacks. 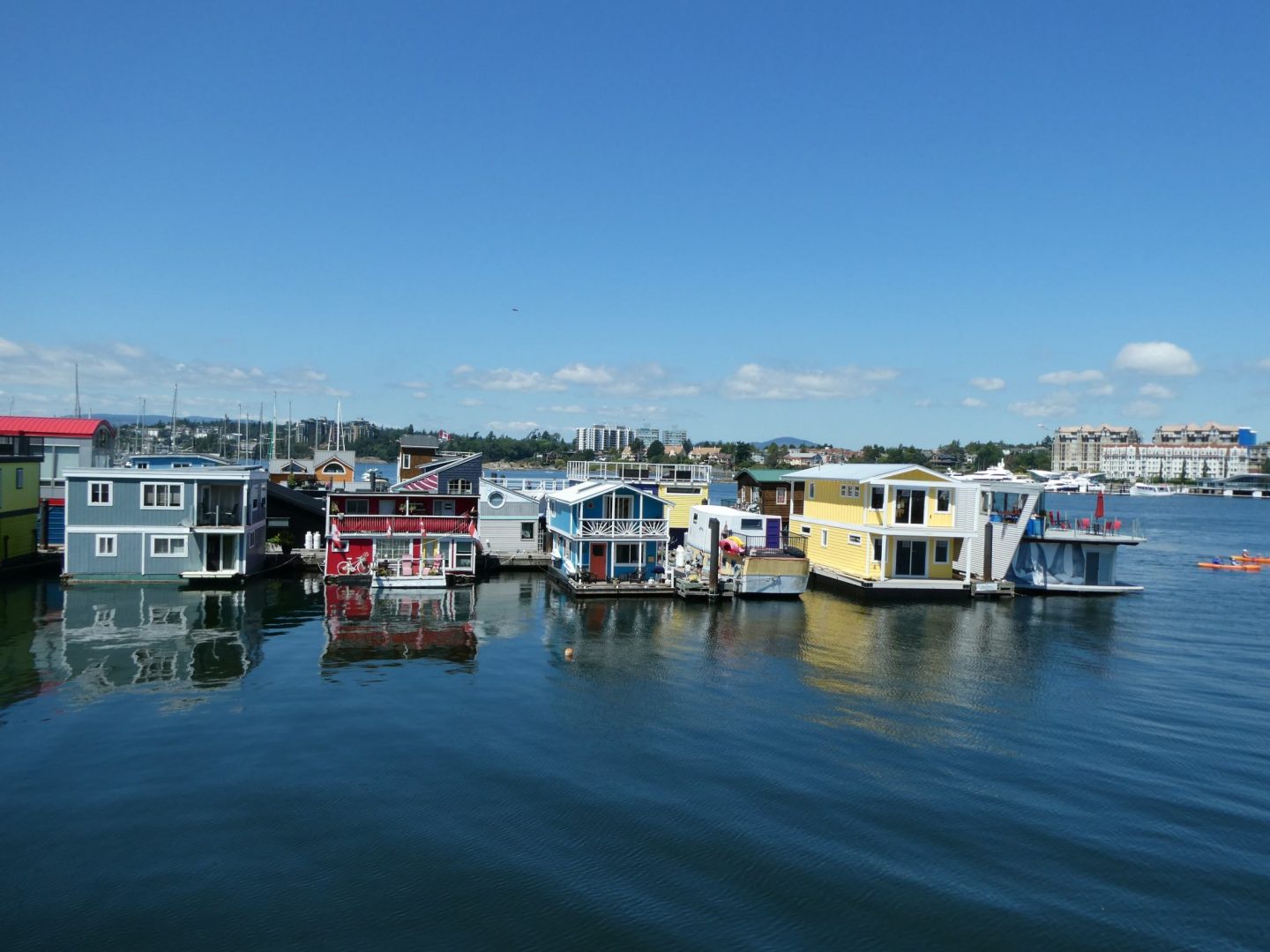 They would probably be a great place to stay, except for the thousand tourists marching past your door every hour.  The wharves where they are moored are right next to an outdoor food centre packed with people munching on fish and chips from morning until well into the night.

But the walk was absolutely worth it when we found otters!  We spotted a family which appeared to be living among some fishing gear on one of the working wharves.  The baby stayed on the wharf while one or other of the parents dived into the water, caught a fish or crab and brought it back for junior to munch on. 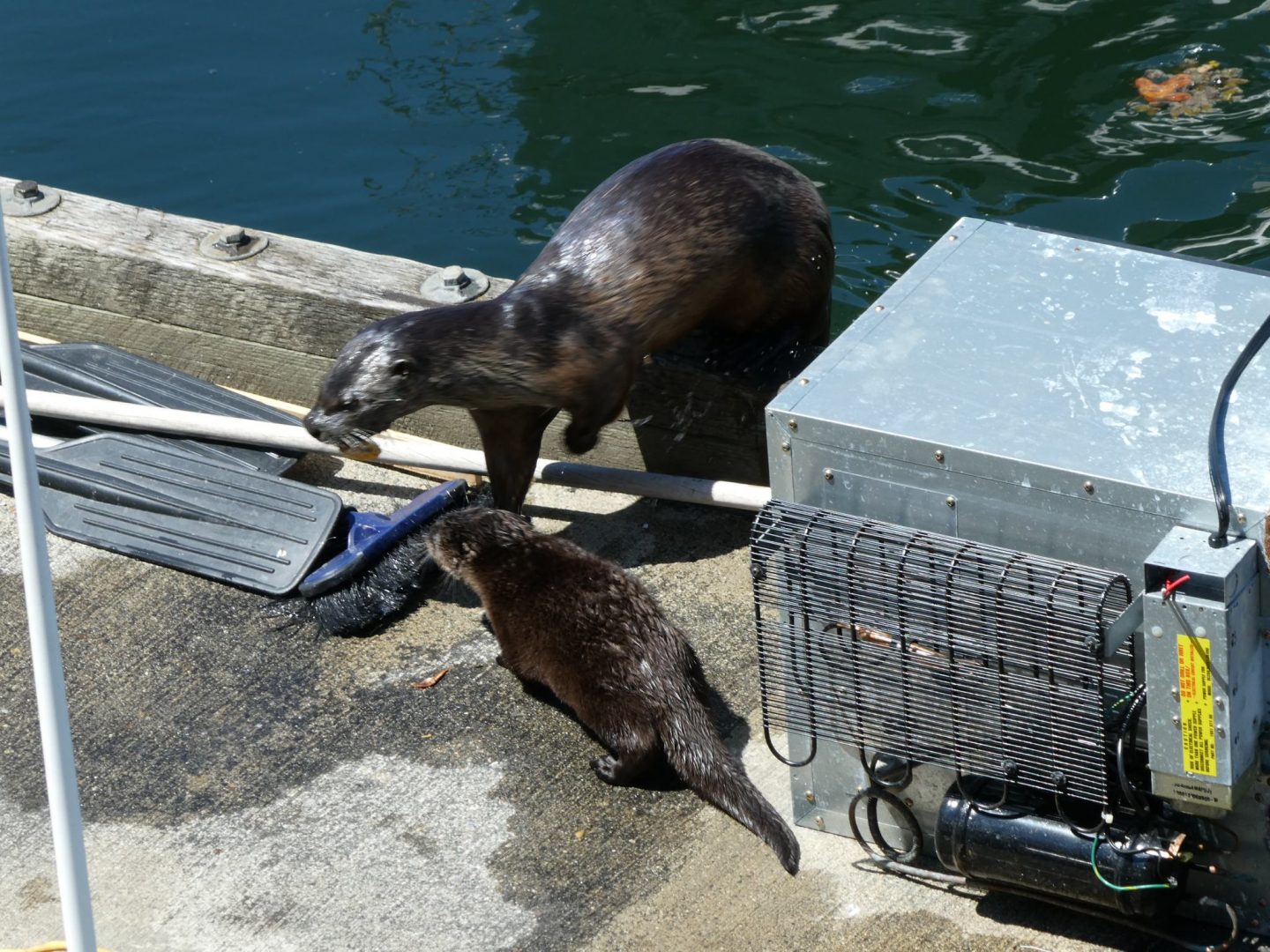 Mum got most of a crab for herself. 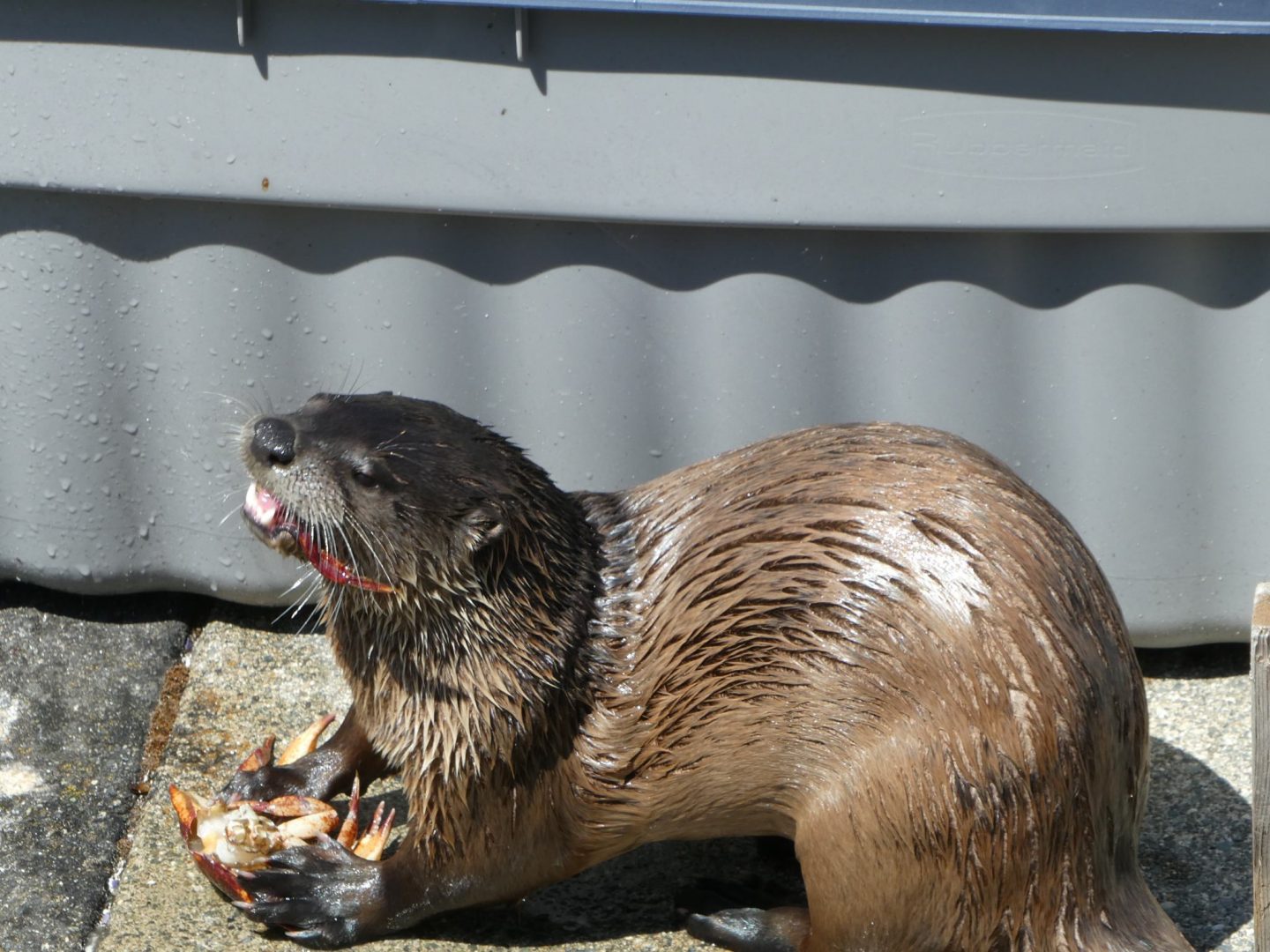 Junior kept interfering and eventually she must have decided she needed some ‘me time’ and swam off to some nearby rocks for a leisurely feed on her own. 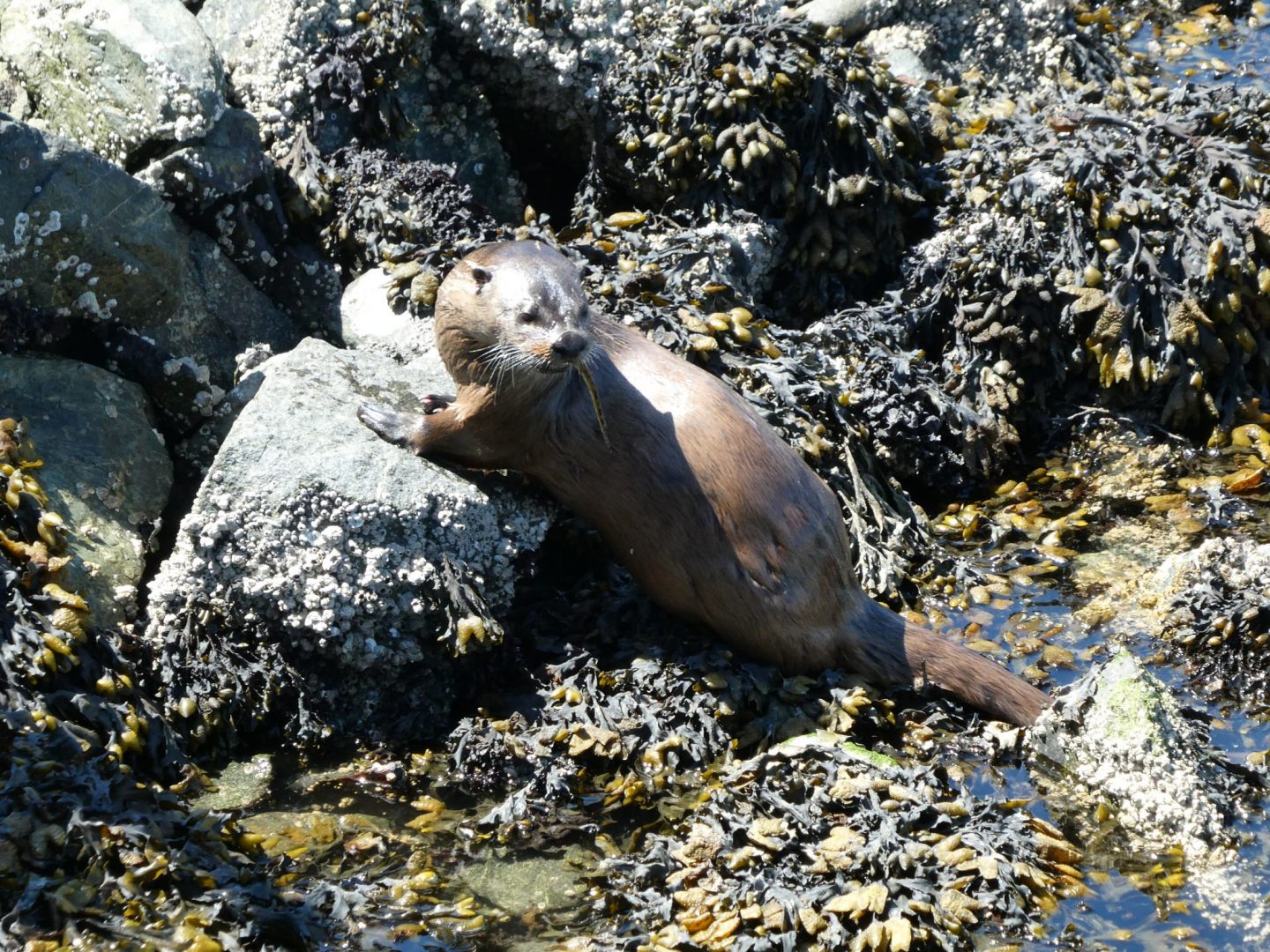 We stood and watched them for ages, astonished at how relaxed they were in what was effectively an urban environment.  Proving once again that sometimes the best wildlife experiences happen when you least expect it.