The United Nations has called Toronto the most diverse city in the world.  51% of the population is foreign born.  Only Miami has a higher percentage, but Toronto’s immigrant mix is much more varied.  Whereas more than three-quarters of Miami’s immigrants hail from Latin America, Toronto’s residents are drawn from over 259 ethnicities and 170 languages are represented here. And that translates into a city whose food, arts and cultural diversity is well worth experiencing.

Toronto is also a city on the move, both up and out.  Population pressure means it’s one of the most expensive places in North America to rent.  It seems like every available space is being in-filled.  The Gardner Expressway, one of the main arteries into the downtown area, has apartment buildings so close that one local commented to us that the unit owners could sell drive past coffee out of their windows to commuters stuck in the gridlock.

Along the waterfront, new apartments are rising.  In the city centre, every second block seems to be a building site.  Downtown is full of interesting architecture.  New, old and blended.  Some of it is polarising.  Like those glass pyramids in the forecourt of the Louvre in Paris, a lot of traditionalists loathe the modern addition to the Royal Ontario Museum. 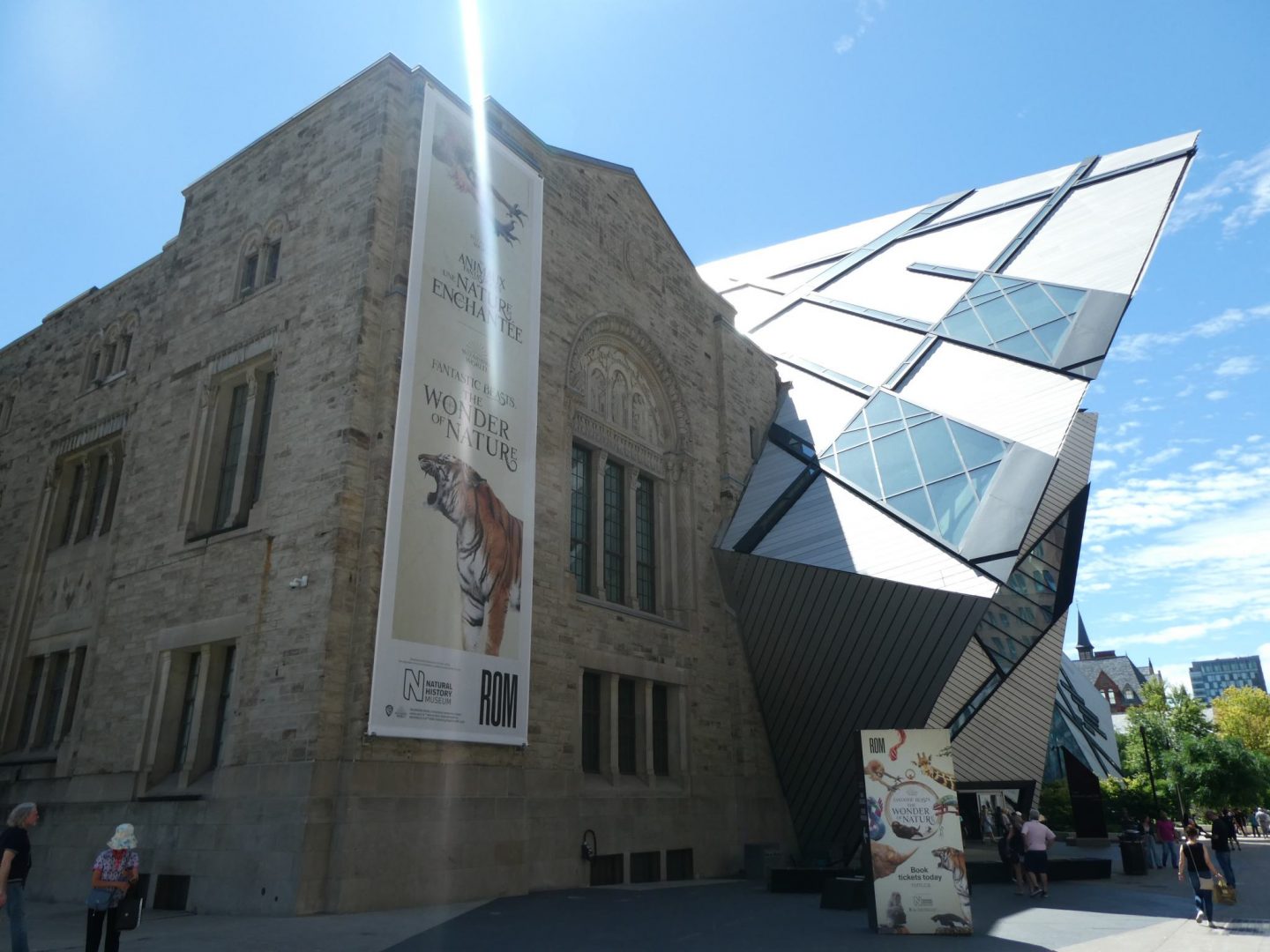 Likewise the Frank Gehry-designed addition to the Art Gallery of Ontario which wraps a crystal boat shaped skin around one side.  If you want to see it as he intended, best go soon as another ‘transformative’ renovation is scheduled for 2026. 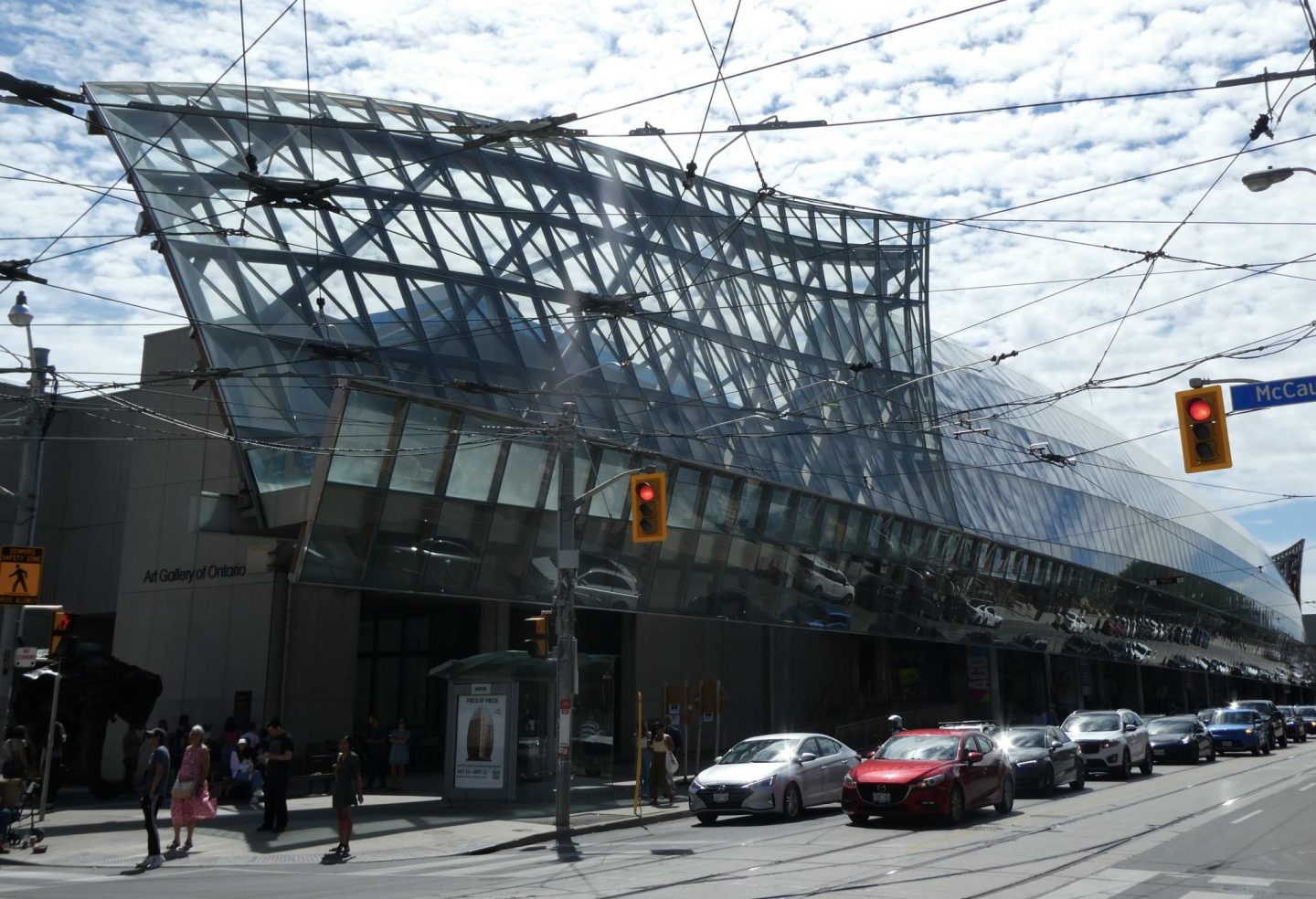 A more traditional makeover is ongoing at the St Lawrence Market.  Built as Toronto’s original town hall and jail, it was converted to a fresh market in 1899.  Several of its halls are under renovation but it continues to operate as Toronto’s largest fresh produce market.  A fabulous selection of artisan food products is on offer and it’s still a real market not a tourist construct. Well worth a wander around. 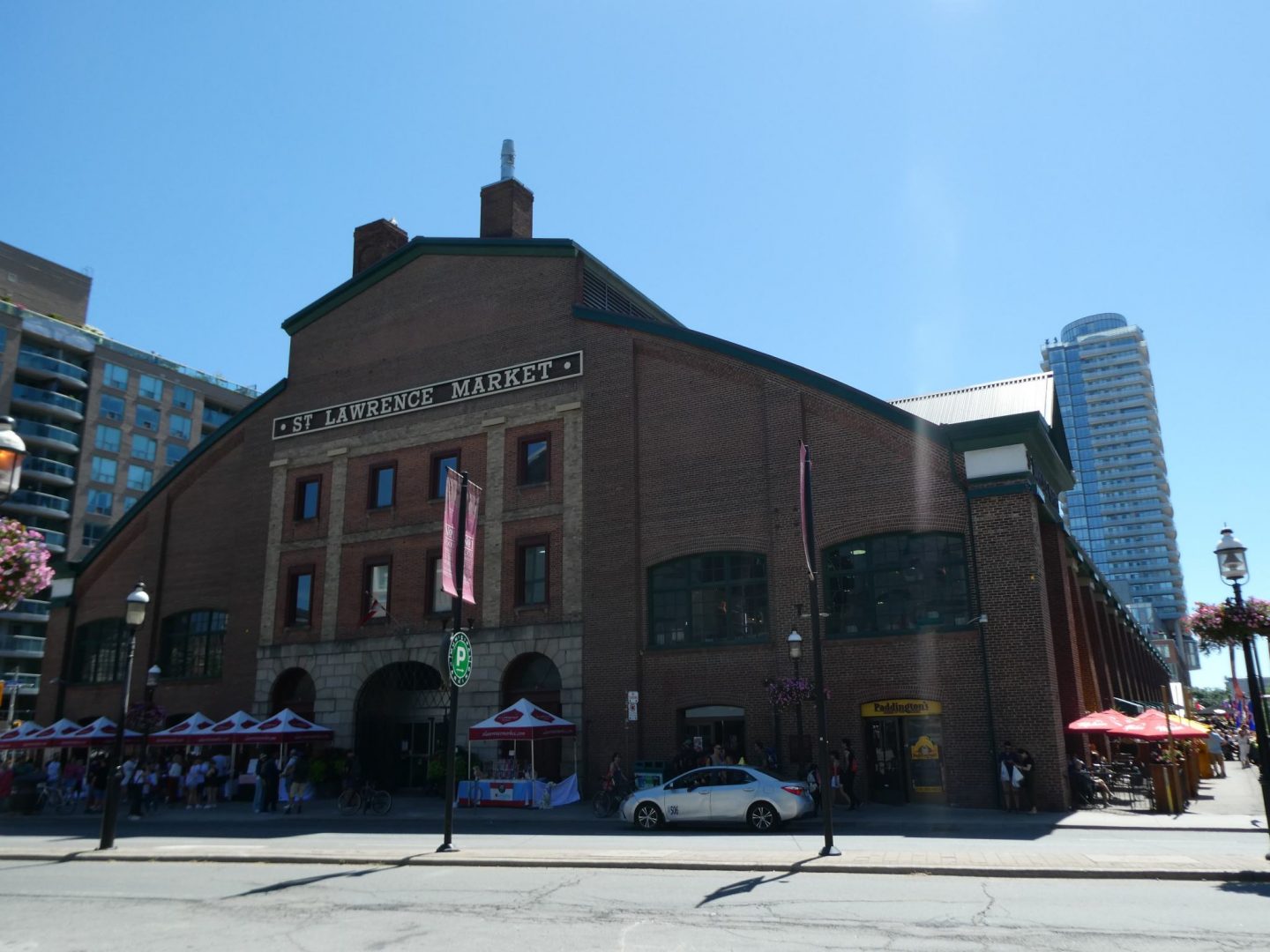 Nearby, the pedestrianised Distillery District is at the site of an old whisky distillery.  It’s 19th century buildings now house an arts precinct with lots of galleries, shops, performance spaces and some vibrant outdoor art. 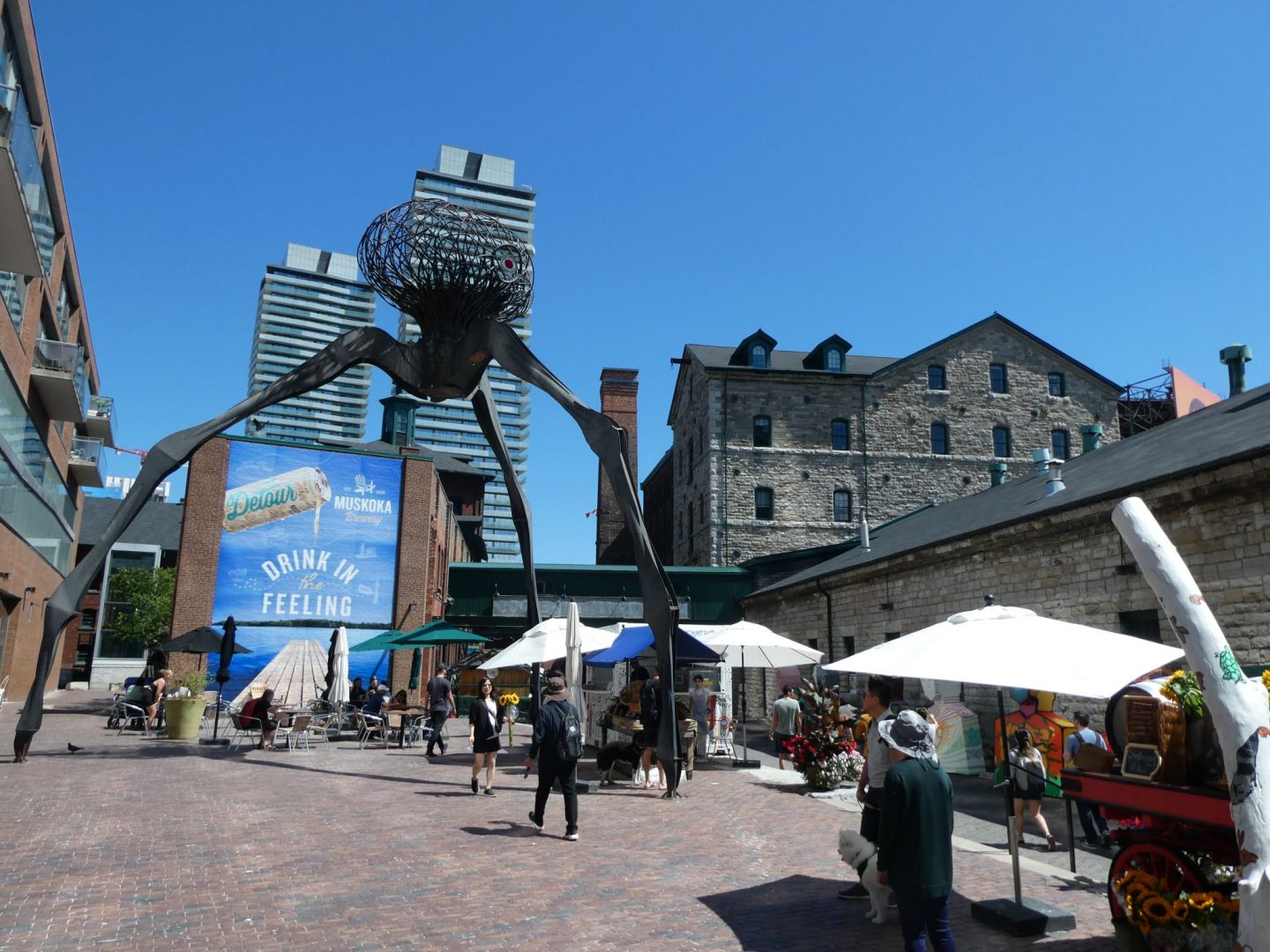 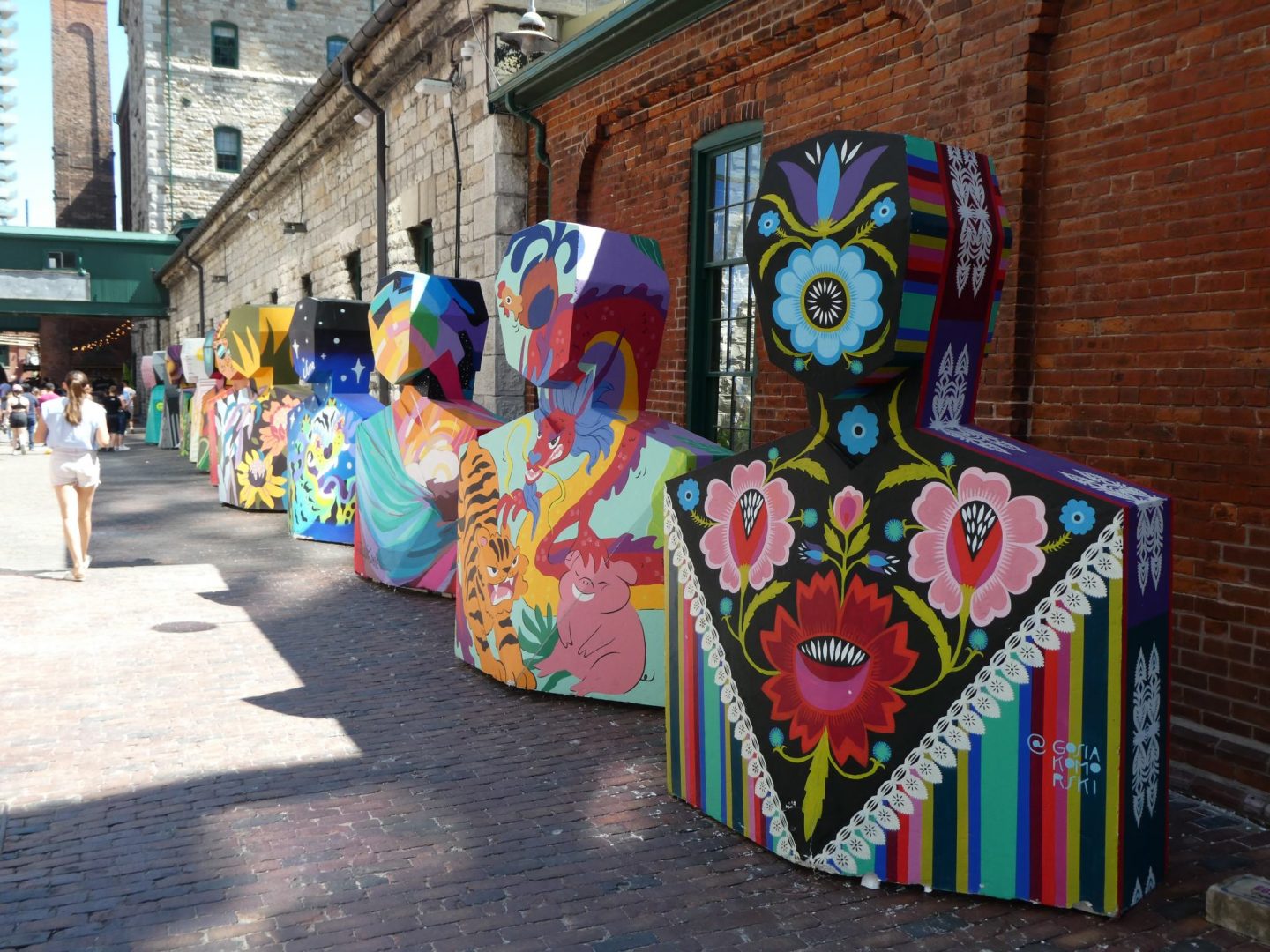 Surely this is unique – the Bata Shoe Museum.  We imagined rooms of school shoes, but there wasn’t a Bata to be seen.  Instead the museum records the history of shoes in a range of ancient cultures.  Who knew that the earliest known example of footwear in Europe was Otzi man, who died in the Alps 5,300 years ago.  His mummified body complete with shoes made of deerskin uppers, bear skin soles and grass stuffing were found impeccably preserved in the ice in 1991.  Otzi’s not here, but a copy of one of his famous shoes is. 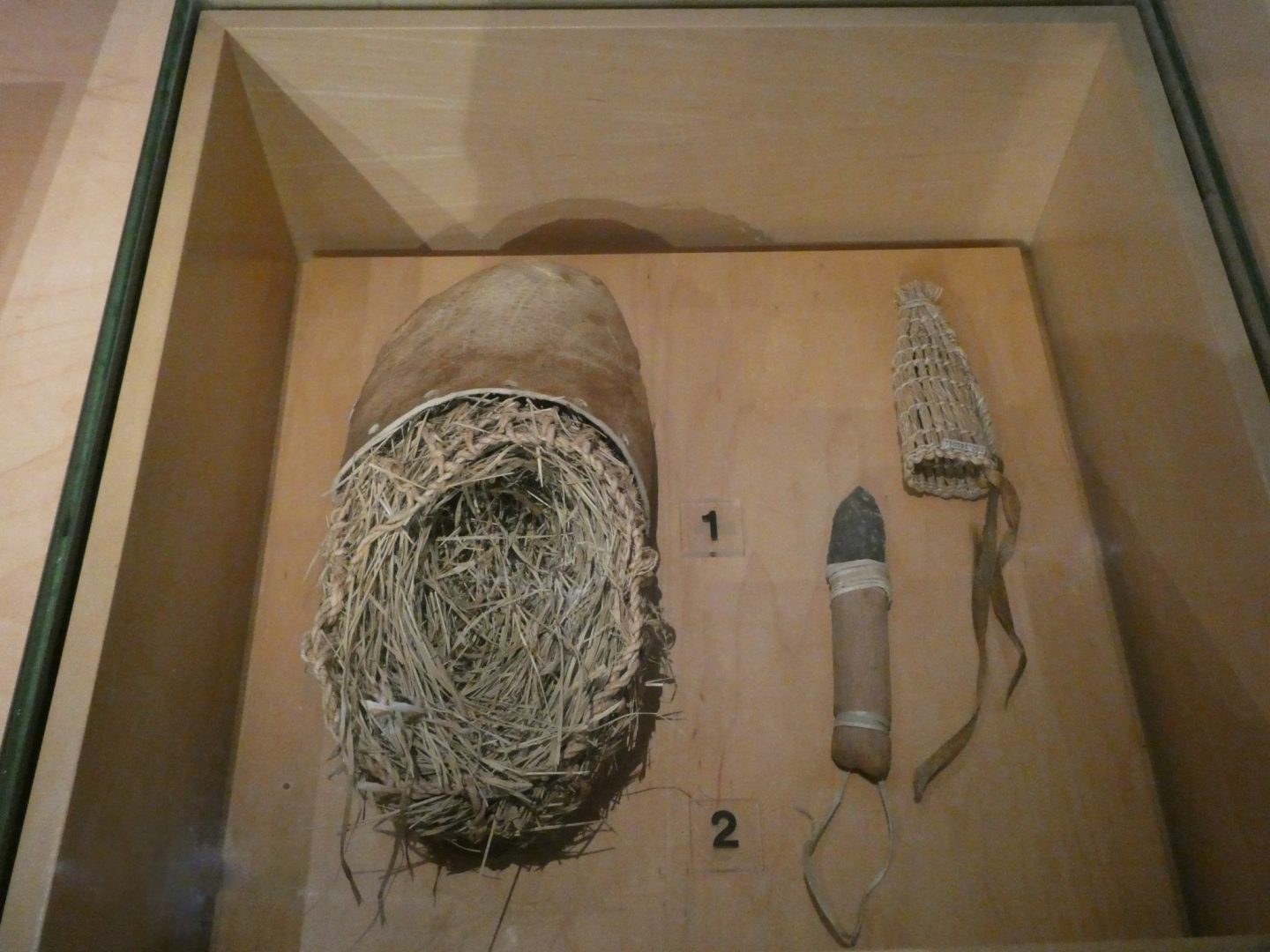 We enjoyed Toronto a lot.  And being so close, we thought we shouldn’t pass up the opportunity to take a day trip to Niagara Falls.

Niagara brands itself  ‘The Honeymoon Capital of the World’ and claims that the millions of litres of water crashing over the falls generate ions which enhance newlyweds’ feelings of happiness.

It all started when Napoleon Bonaparte’s brother, Jerome brought his American bride Elizabeth to Niagara Falls during their honeymoon in 1804.  Alas, whatever happiness the ions generated, the marriage was short lived.  Napoleon was furious as he wanted his siblings married into royal families across Europe to enhance his power.  When Jerome returned to Europe to attend his brother’s coronation less than a year later, Napoleon barred the pregnant Elizabeth from entering France.  He then dissolved the marriage by imperial decree and demanded Jerome end the relationship.  Jerome capitulated in exchange for being made an admiral in the navy, a general in the army, an imperial prince and King of Westphalia.  He made no attempt to see his son for almost 20 years, and contributed not a franc to his upbringing or to supporting the abandoned Elizabeth.

Despite the ignominious end to their relationship, they obviously started a trend – more than 50,000 couples get married here every year.  Oscar Wilde wittily remarked that ‘every American bride comes here’.  Think about it.

In recent times it’s been nicknamed Viagra Falls, and some wag even came up with the tagline ‘an American bride’s second greatest disappointment’.  Ouch.

But while the town may have seen better days, the falls definitely are worth seeing.

The Niagara River marks the border between the USA and Canada.  At a 90 degree turn, the river is forced either side of a rock bluff, splitting into three waterfalls which cascade over the Niagara Gorge.

The falls are best viewed from the Canadian side, and the best bird’s eye view is from the observation deck of the 236 metre high Skylon Tower.

That’s the American Falls and adjacent Bridal Veil Falls to the left. 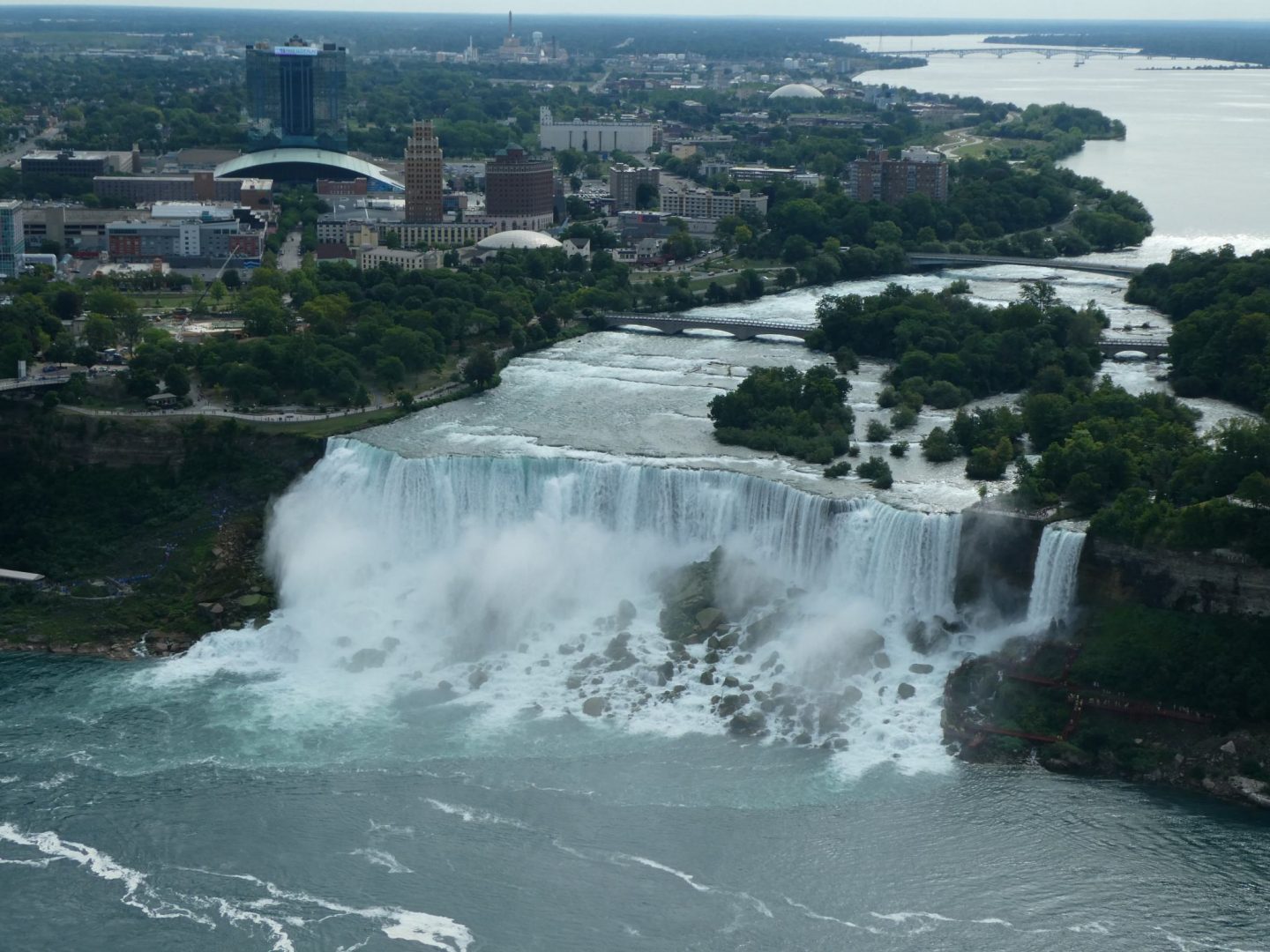 And the Canadian Falls, also named the Horseshoe Falls, to the right. 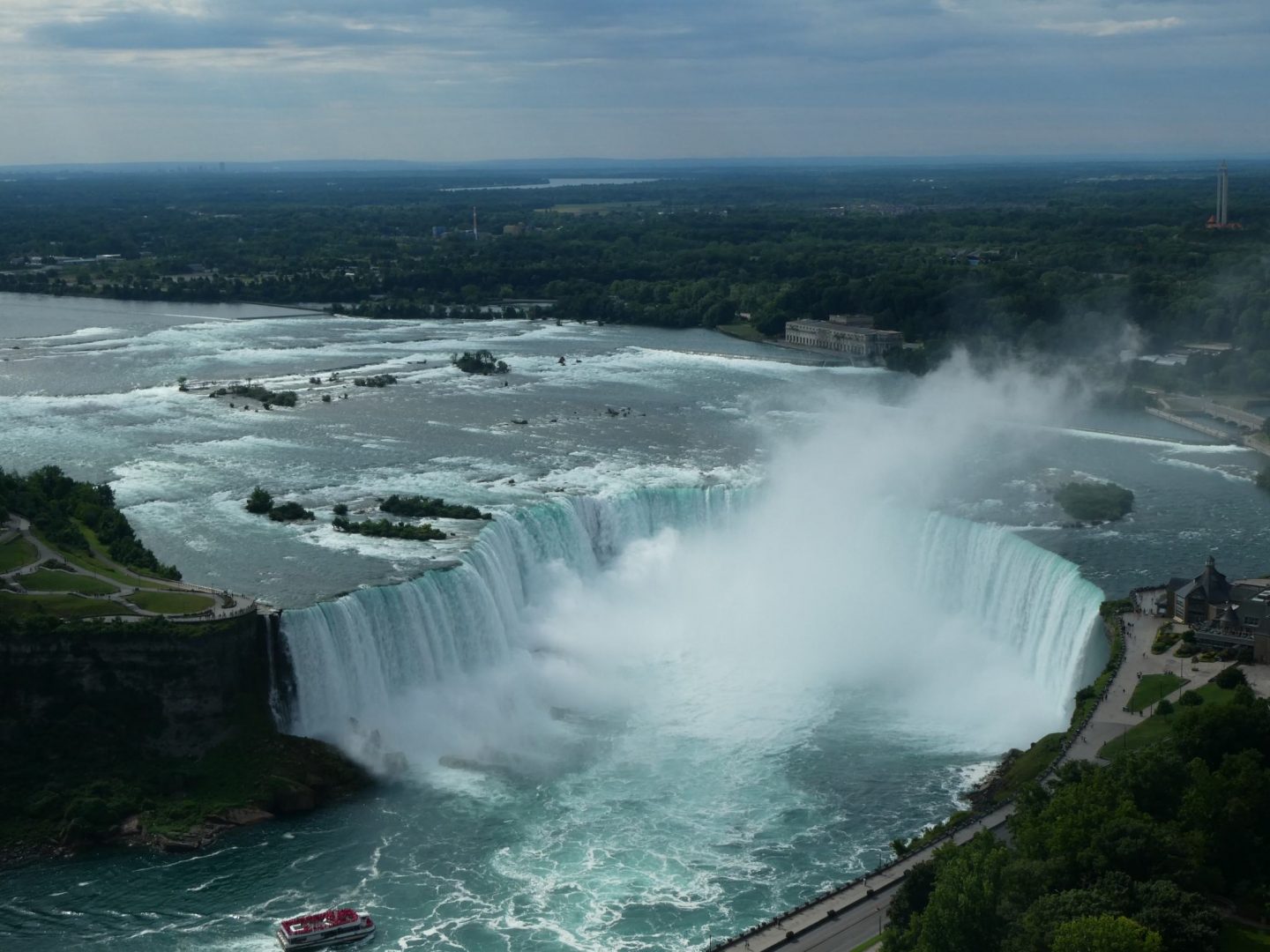 In waterfall terms, they are quite short.  At their highest, they have drops of only 30 metres and 57 metres respectively.  Victoria Falls in Zimbabwe, for example is 108 metres.  What makes Niagara impressive is the volume of water pouring over.  More than 168,000 cubic metres of water goes over the lip of the falls every minute during daytime in summer.  By comparison, Victoria Falls merely trickles over at a rate of 65,000 cubic metres per minute.

To truly experience the power of the falls, open decked boats bring visitors up close.  You get a rain poncho, which at best shrouds your hair and torso.  When the boat heads into the spray thrown up by the Canadian Falls, you can forget about staying dry. 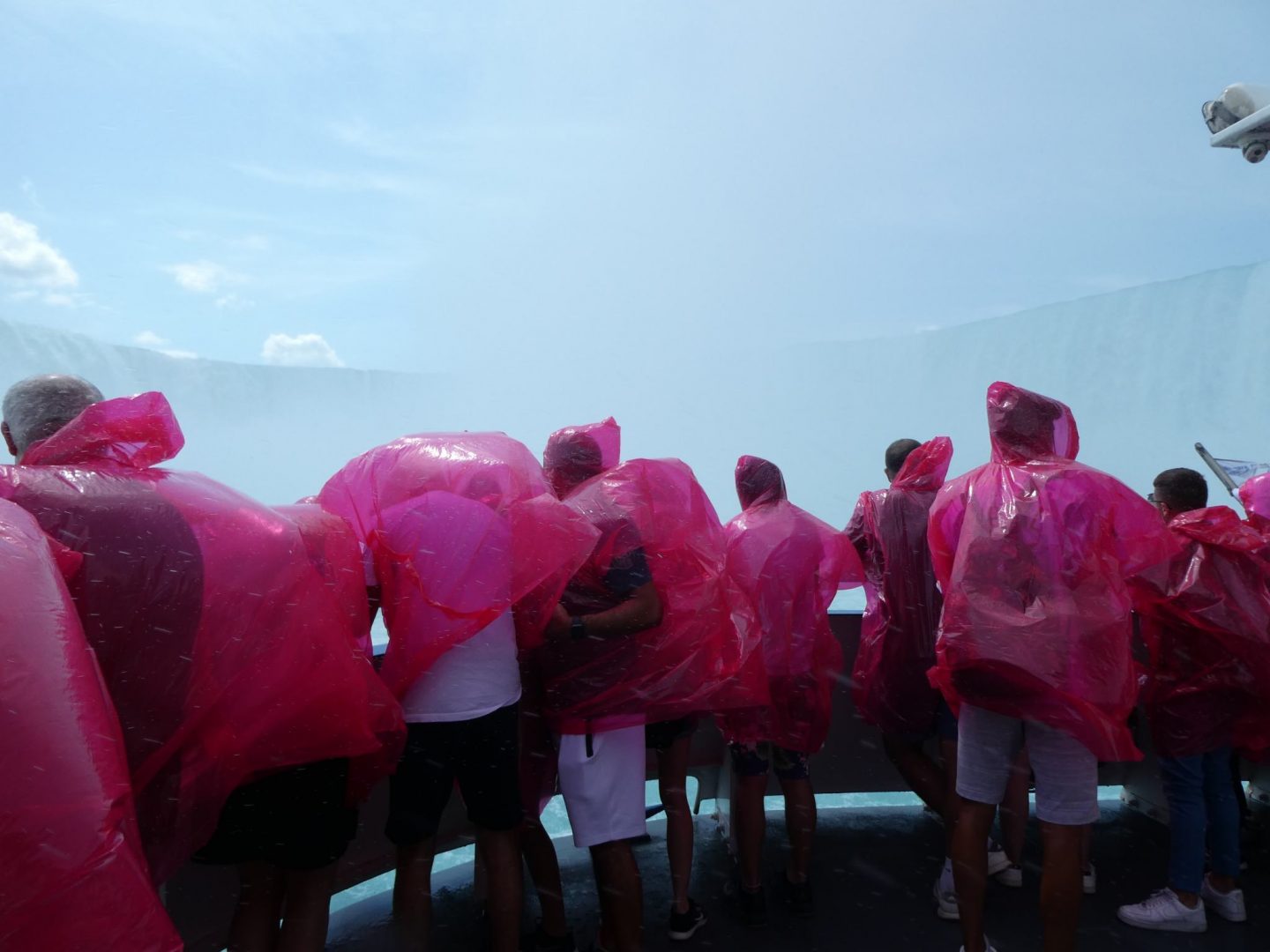 Here we are going in.  Take photos quickly and then wrap the camera away. 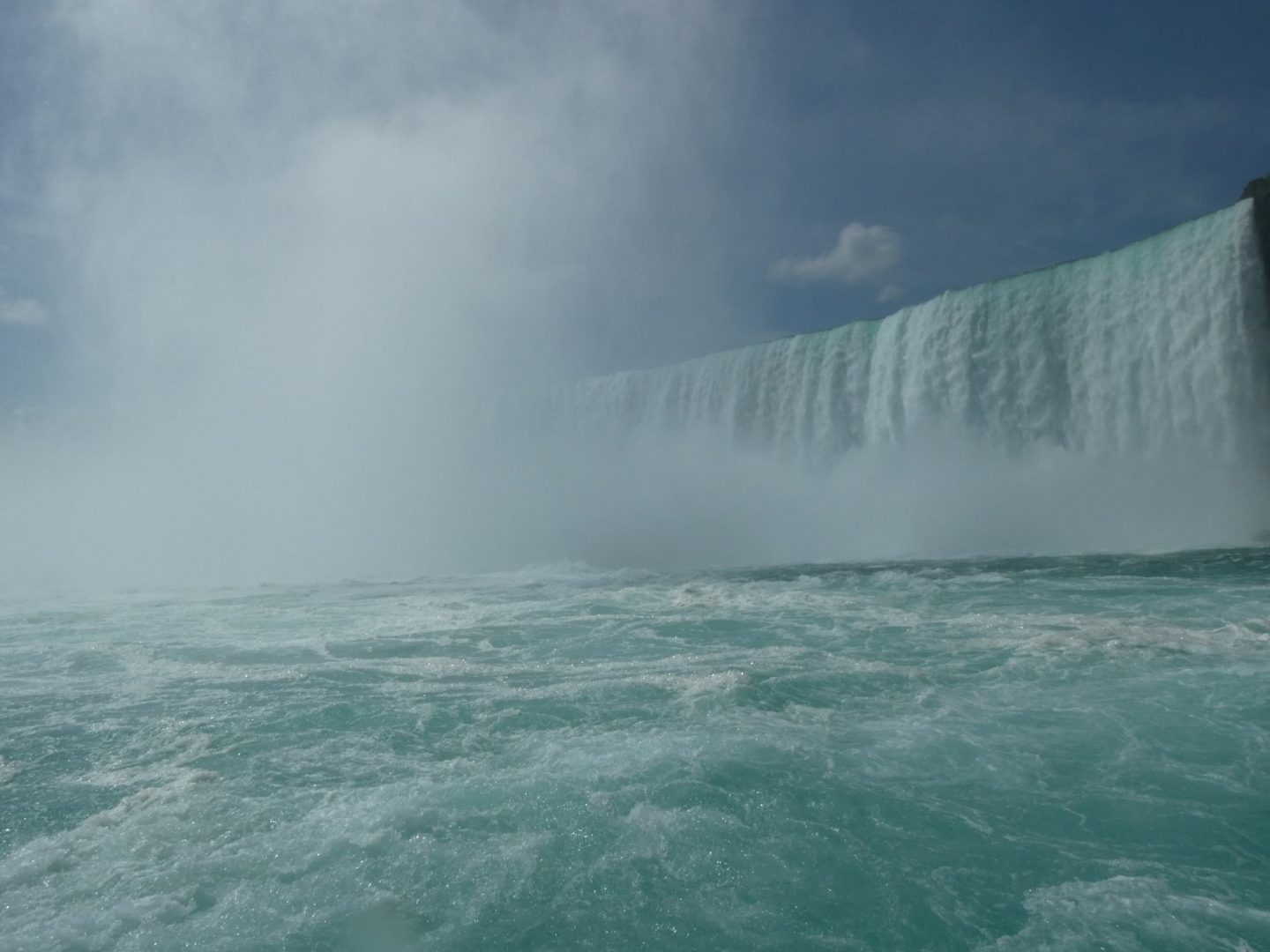 From the riverside promenade on the Canadian side, there are great views and you can see how close the boats actually get. 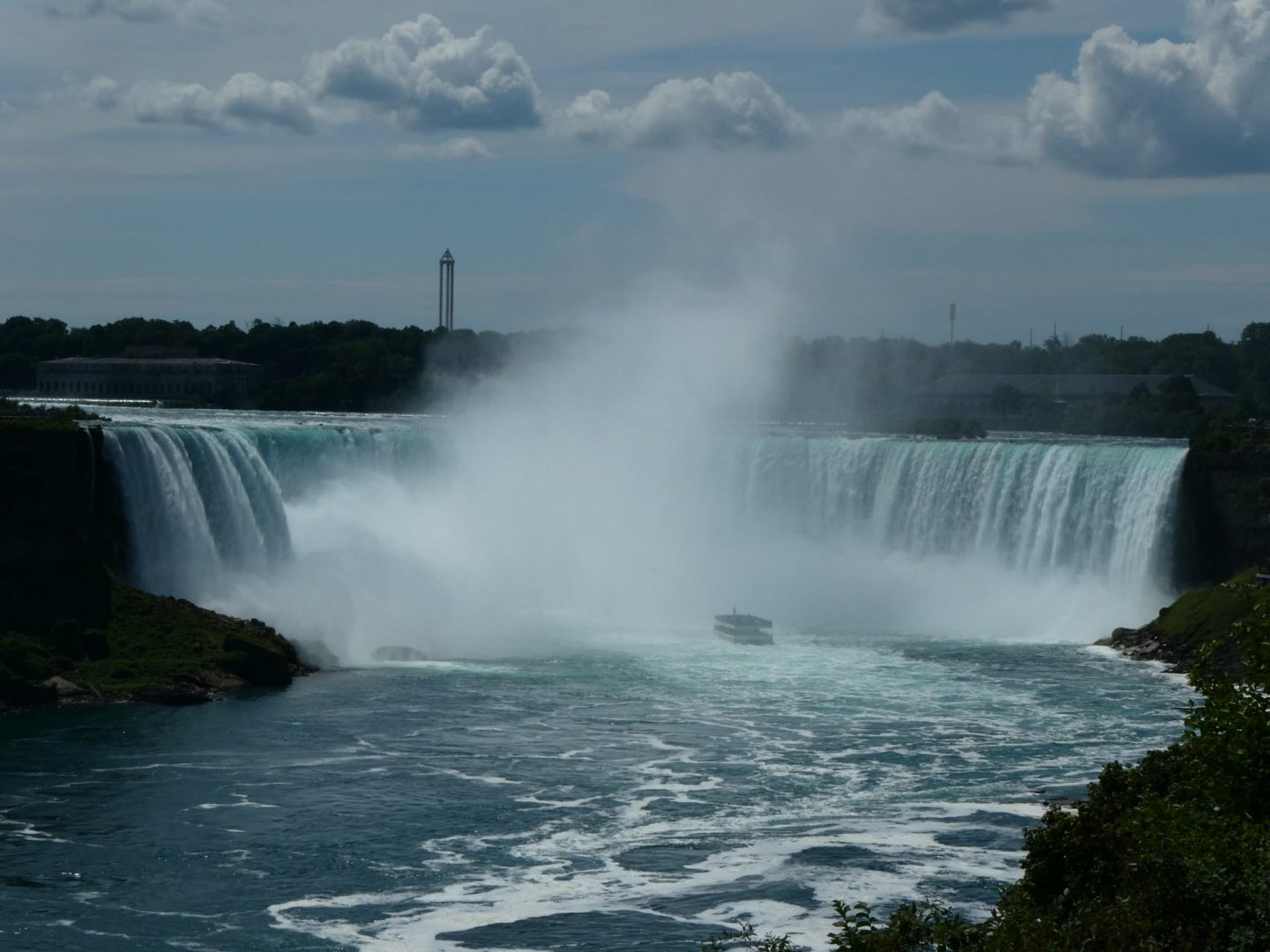 On the way out from Toronto, the bus driver described all the hare-brained attempts by daredevils to ‘go over the falls’ in everything from barrels to lashed-together inner tubes.  Many of those attempts were of course fatal but his delivery somehow made it all very compelling.   Some have survived going over the Canadian Falls, but when you see the rocks at the base of the American Falls it’s easy to understand why no one has survived going over them. 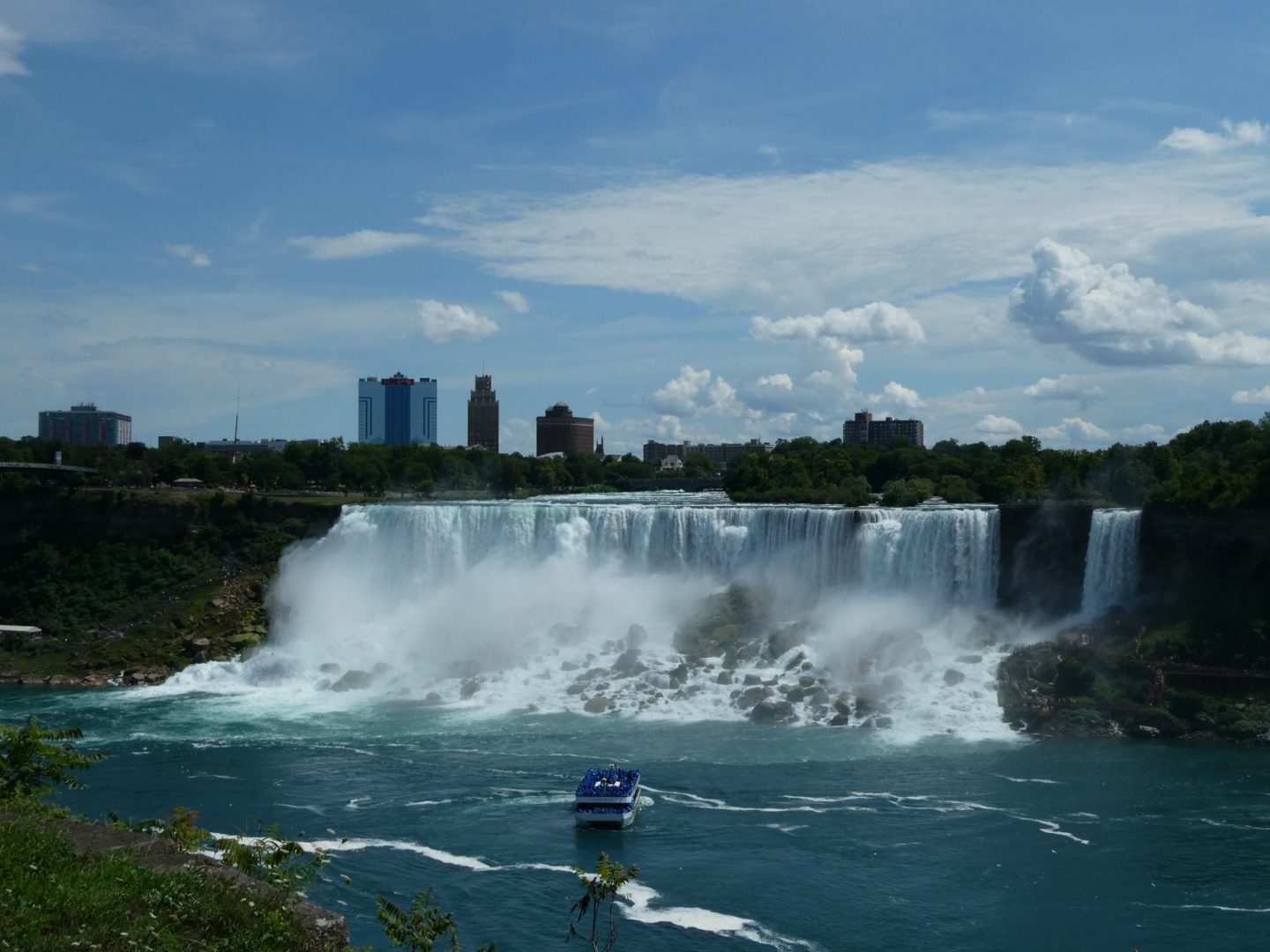 From the falls, the Niagara Parkway heads toward the town of Niagara on the Lake.  Winston Churchill described it as “the prettiest Sunday drive in the world”.  Along the way you can stop at the only other 90 degree bend in the river, where the speed and volume of the water heading into the bend creates a vortex known as the Niagara Whirlpool.  Of course, there’s a cable car across it. 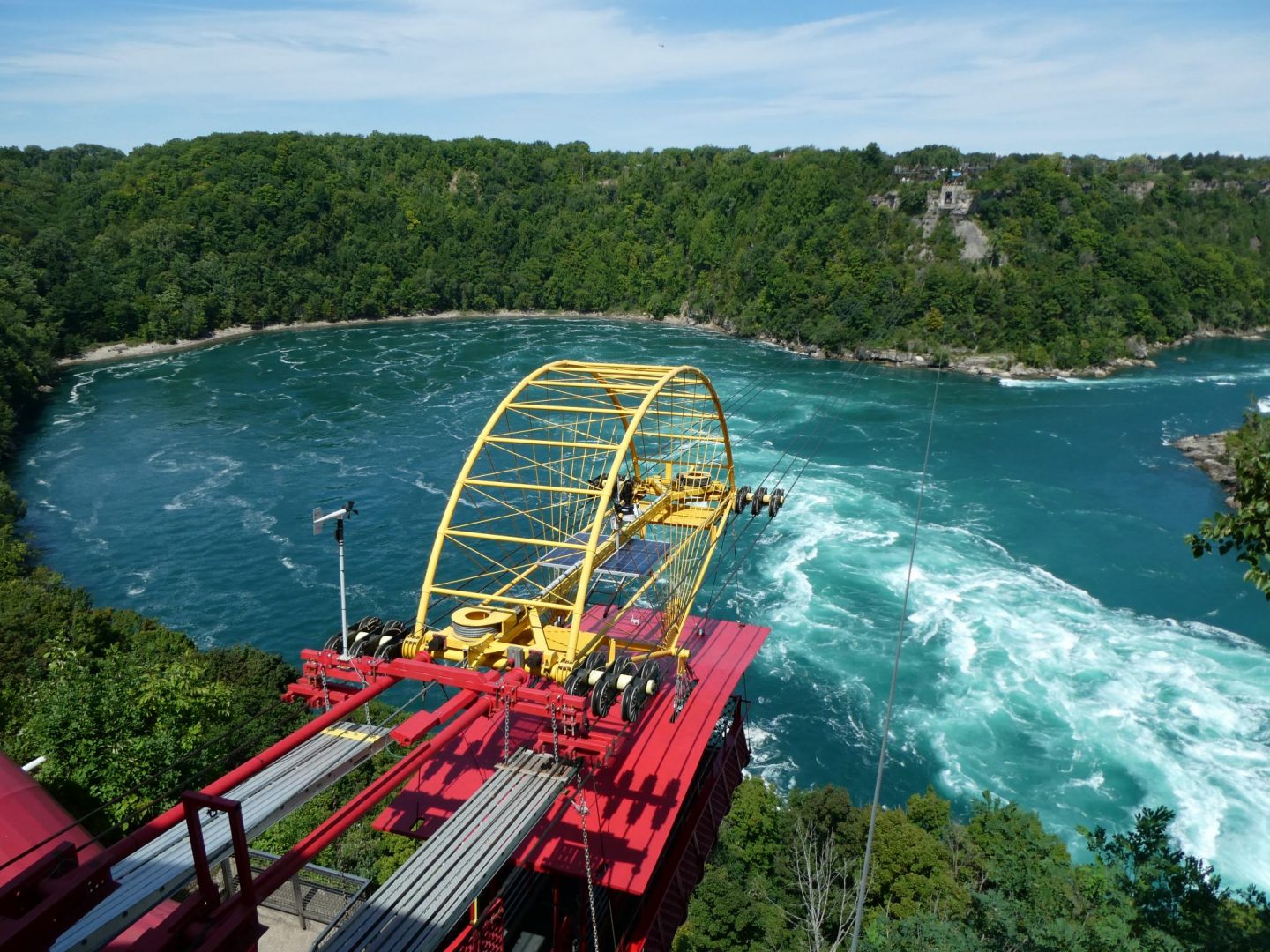 And an enormous electric floral clock built in 1950 by Ontario Hydro.  Composed of 15,000 plants, the face is more than 12 metres in diameter, making it one of the largest floral clocks in the world. 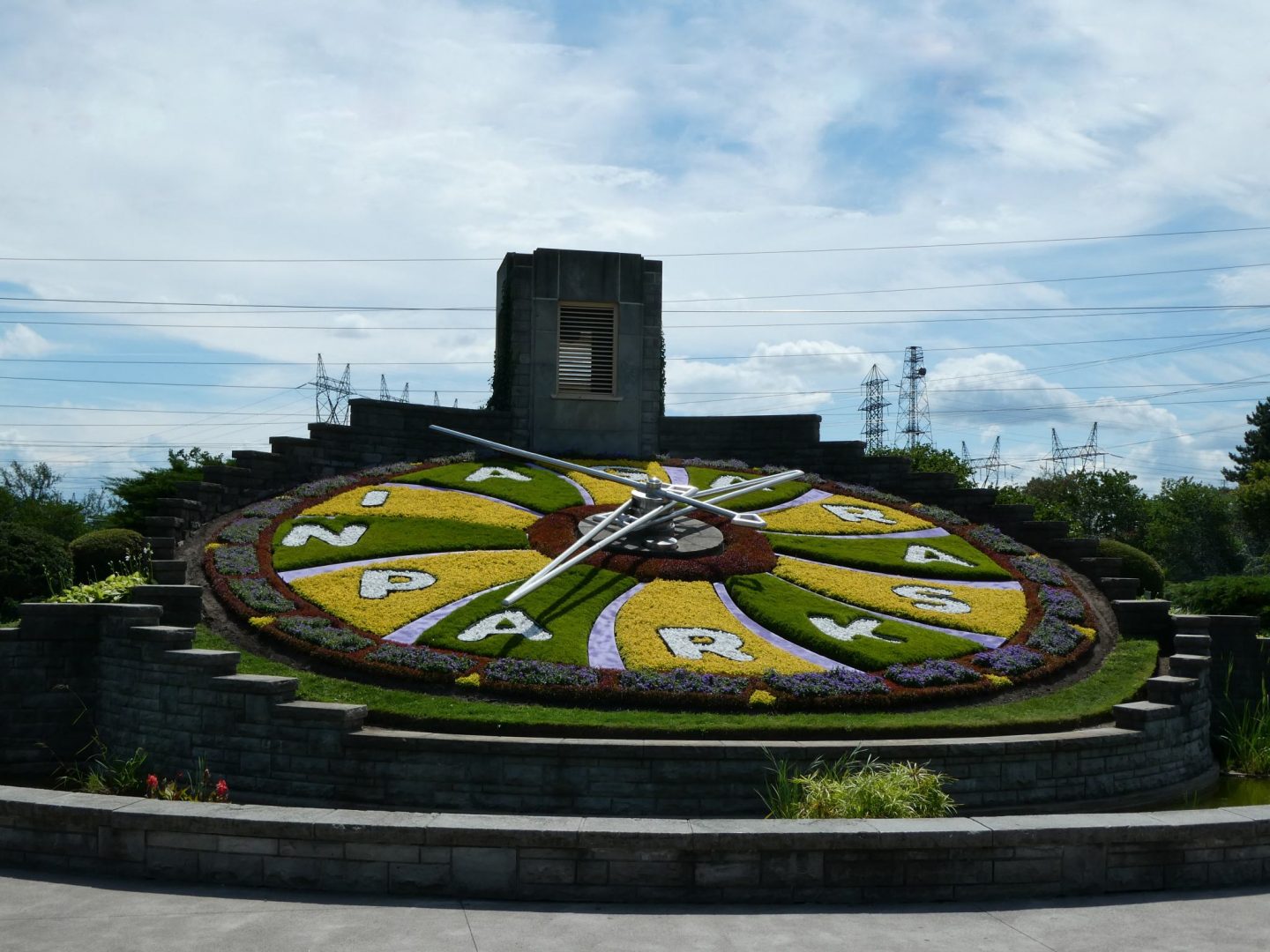 At the other end of the scale, there’s the Living Waters Wayside Chapel which seats just six people and is said to be the smallest church in the world, although the Guinness Book of Records has no such entry. 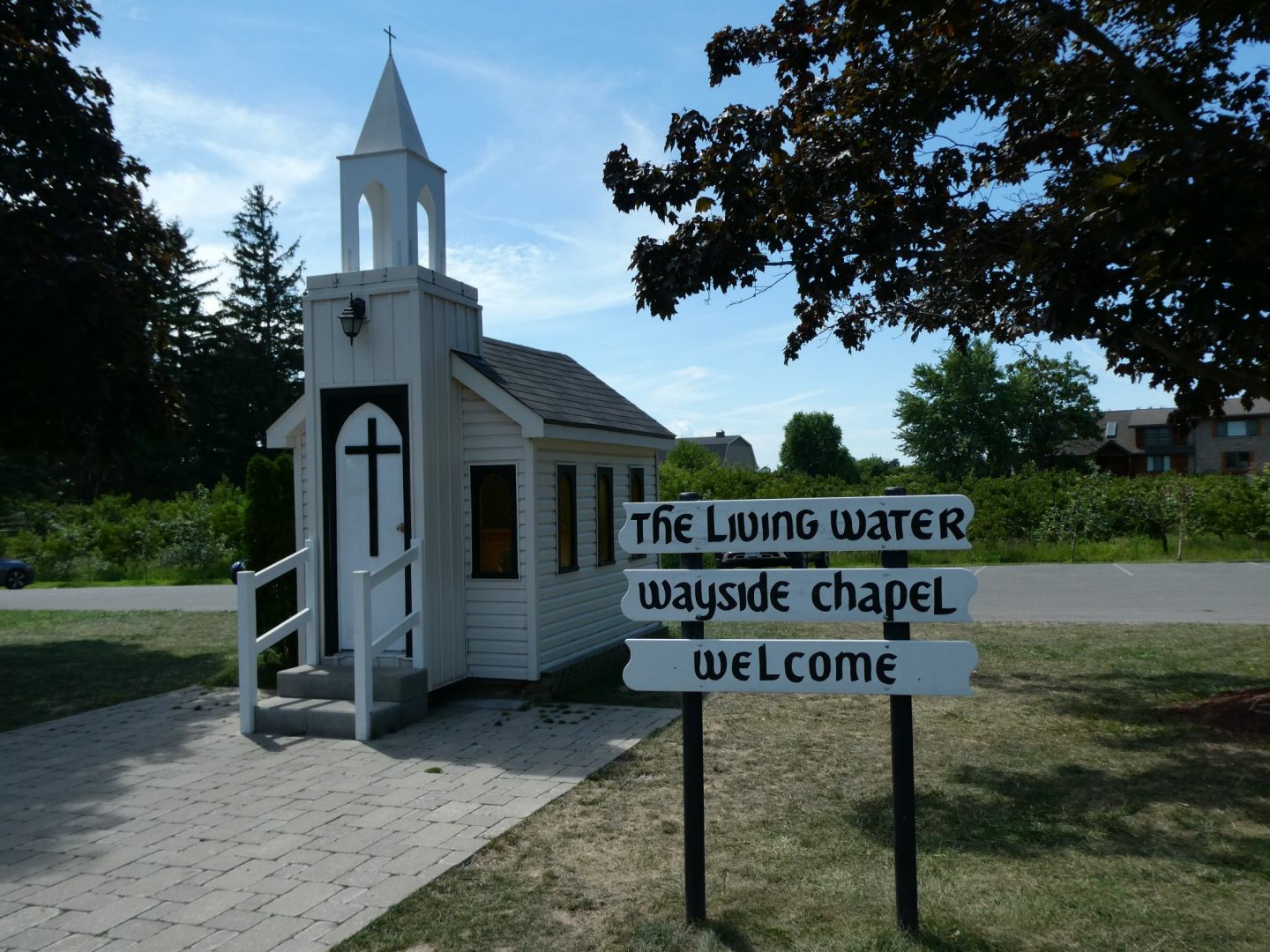 And lastly it’s worthwhile stopping in Niagara on the Lake.  A prettier little town would be difficult to find. 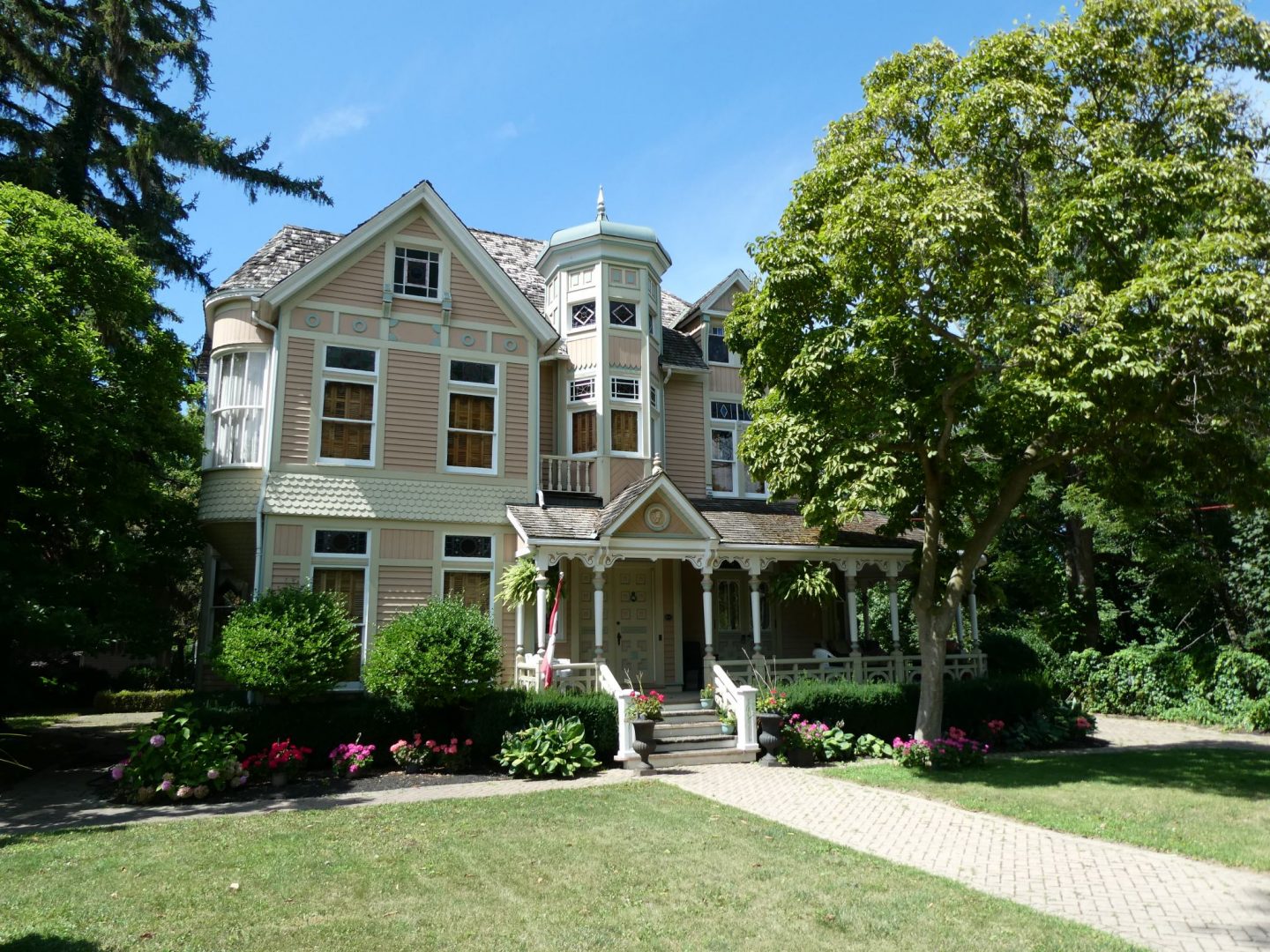 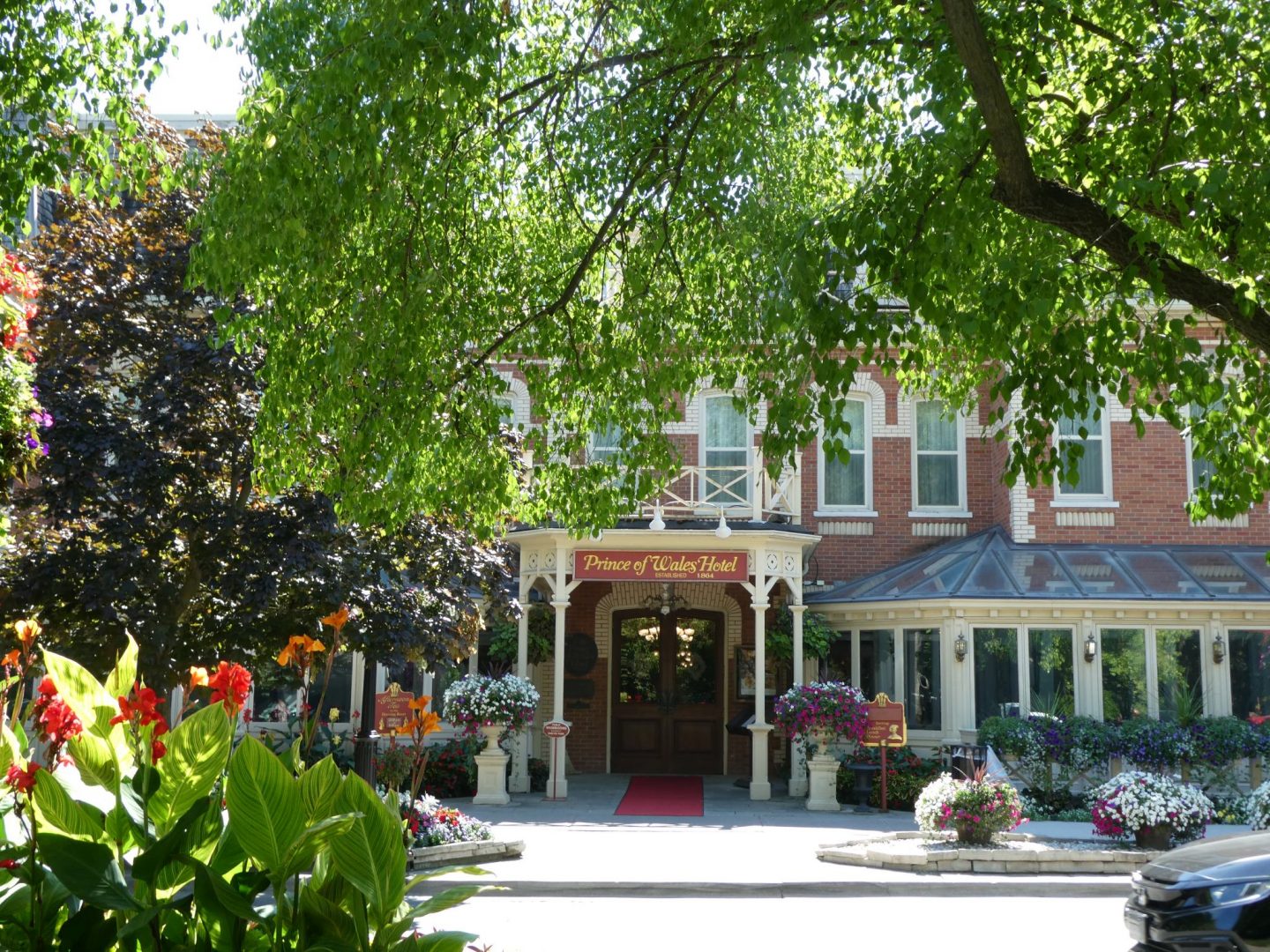 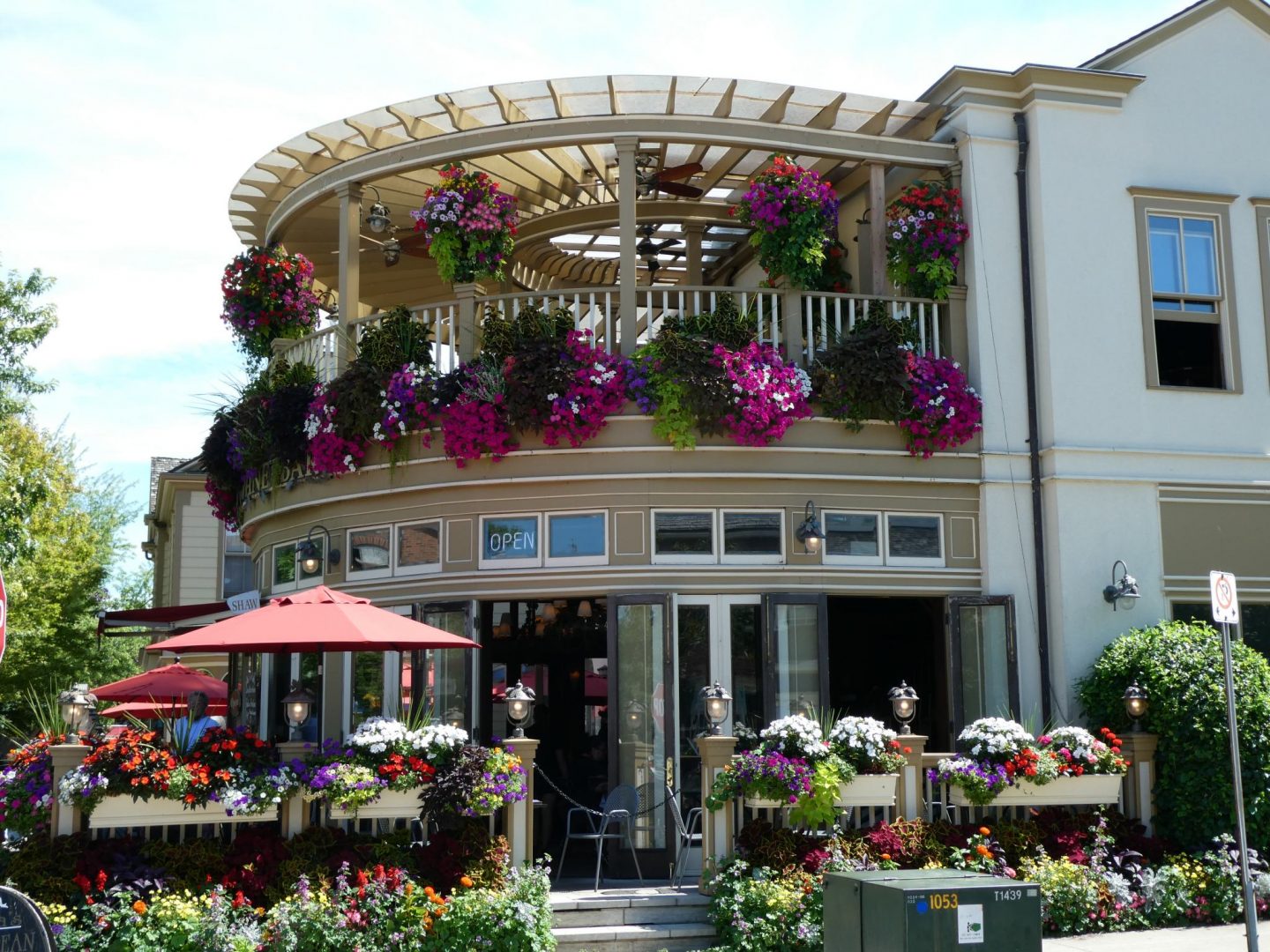 All that on an easy day trip with tour bus operator Chariots of Fire.  Our expectations were low and the ‘extra stops’ after the falls were less than compelling, but overall we really enjoyed it.

Then back to Toronto for a last chance to spin the wheel on world cuisines before heading to Newfoundland.