“Put a bunch of sailors on a cold rock in the middle of the ocean, make them really poor, give them lots to drink and not too many jobs, wait a few centuries, and you’ll have a pretty good idea what Newfoundland is like”.  (Drew Brown, journalist and writer, born and bred Newfoundlander, writing for vice.com)

St John’s is the capital of Newfoundland, the most easterly city in North America and one of the oldest.  The harbour here was first used by Portuguese, Spanish and French fishermen in the 1500s as a seasonal camp for the cod season.  By late that century, the English were also fishing here. In 1583, privateer Sir Humphrey Gilbert claimed the island as England’s first overseas colony under Royal Charter of Queen Elizabeth and a permanent settlement was established in 1630.

The French tried to take it a few times but ultimately failed.

The weather is harsh, the land is marginal and it’s a long way from anywhere ‘important’.  Fishing, sealing and whaling remained Newfoundland’s mainstay for centuries until the collapse of fish stocks, changing social attitudes to seal hunting, and moratoria on whaling in 1972 and cod fishing in 1992 hollowed out all of those industries.

Offshore oil drilling and, to a lesser extent, tourism have reinvigorated the economy in recent decades, but it’s Newfoundland’s fishing history which still seems most obvious.  Cod is still god here.

The centre of town climbs in tiers up the hill, it’s brightly painted houses a tradition since the 1880s.  The romantic explanation is that fishermen returning after a long spell at sea would search out their house as they sailed up the harbour, glad to be almost home.  But St John’s is the foggiest city in Canada, with an average of 124 foggy days per year.  So the fishermen painted their houses in bright colours to make them more visible.  It probably isn’t true, but it’s a lovely story, and the tradition has earned the precinct the modern day nickname Jellybean Row. 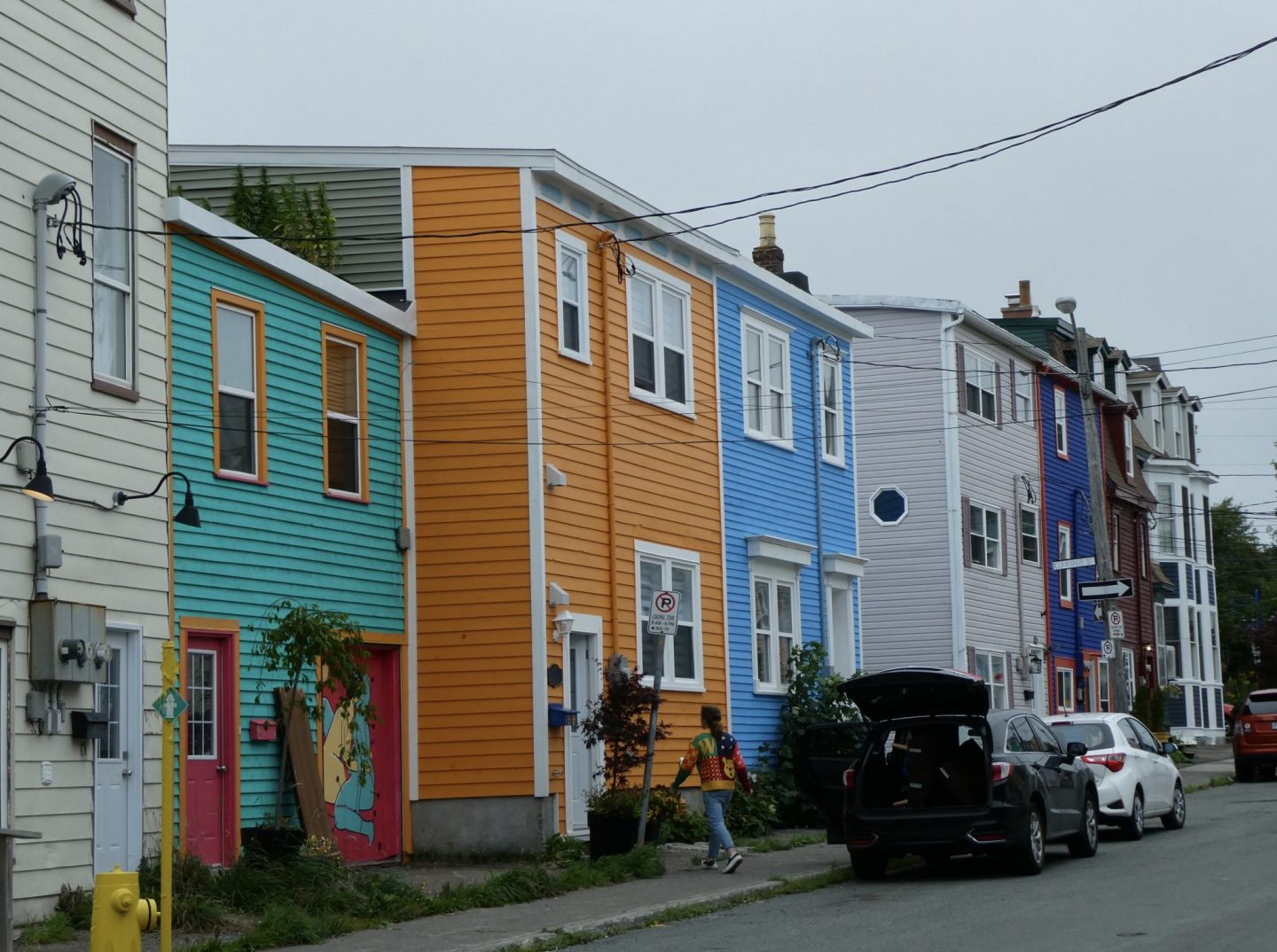 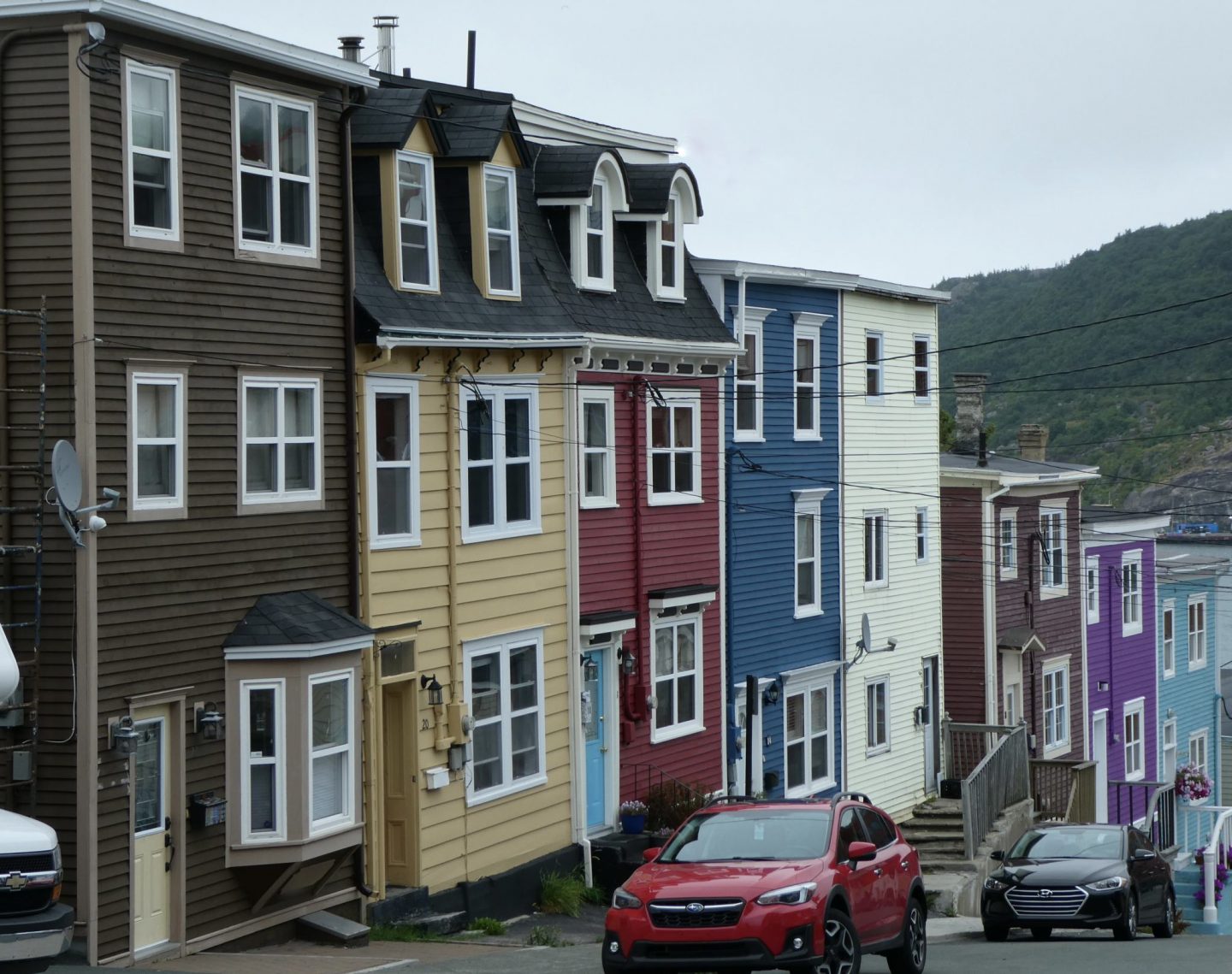 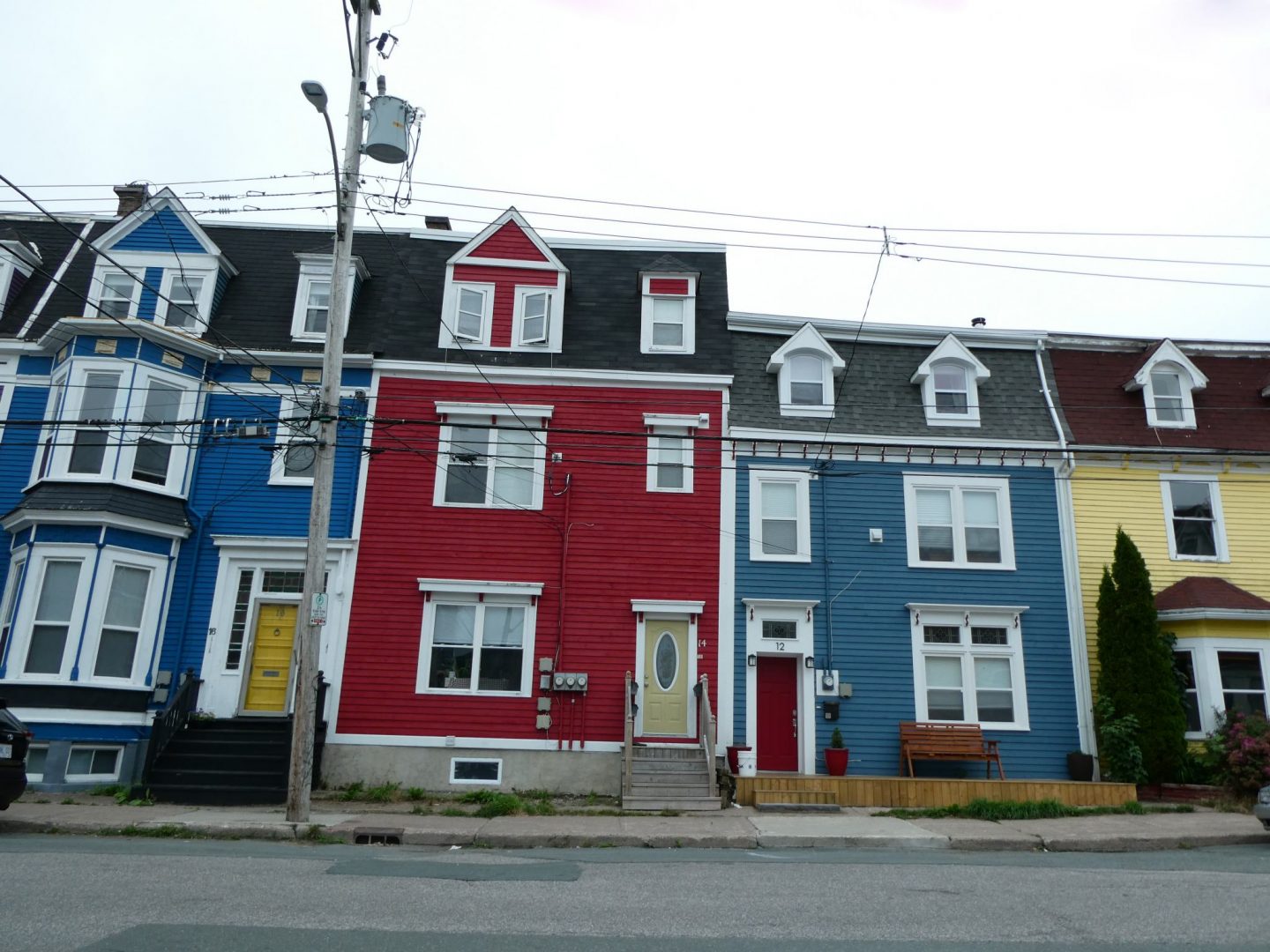 The port is very much a working one – no longer a picturesque fishing harbour.  But a walk takes you out past the big ships and toward the harbour entrance there are still traditional fishing houses, many restored or in the process of being spruced up. 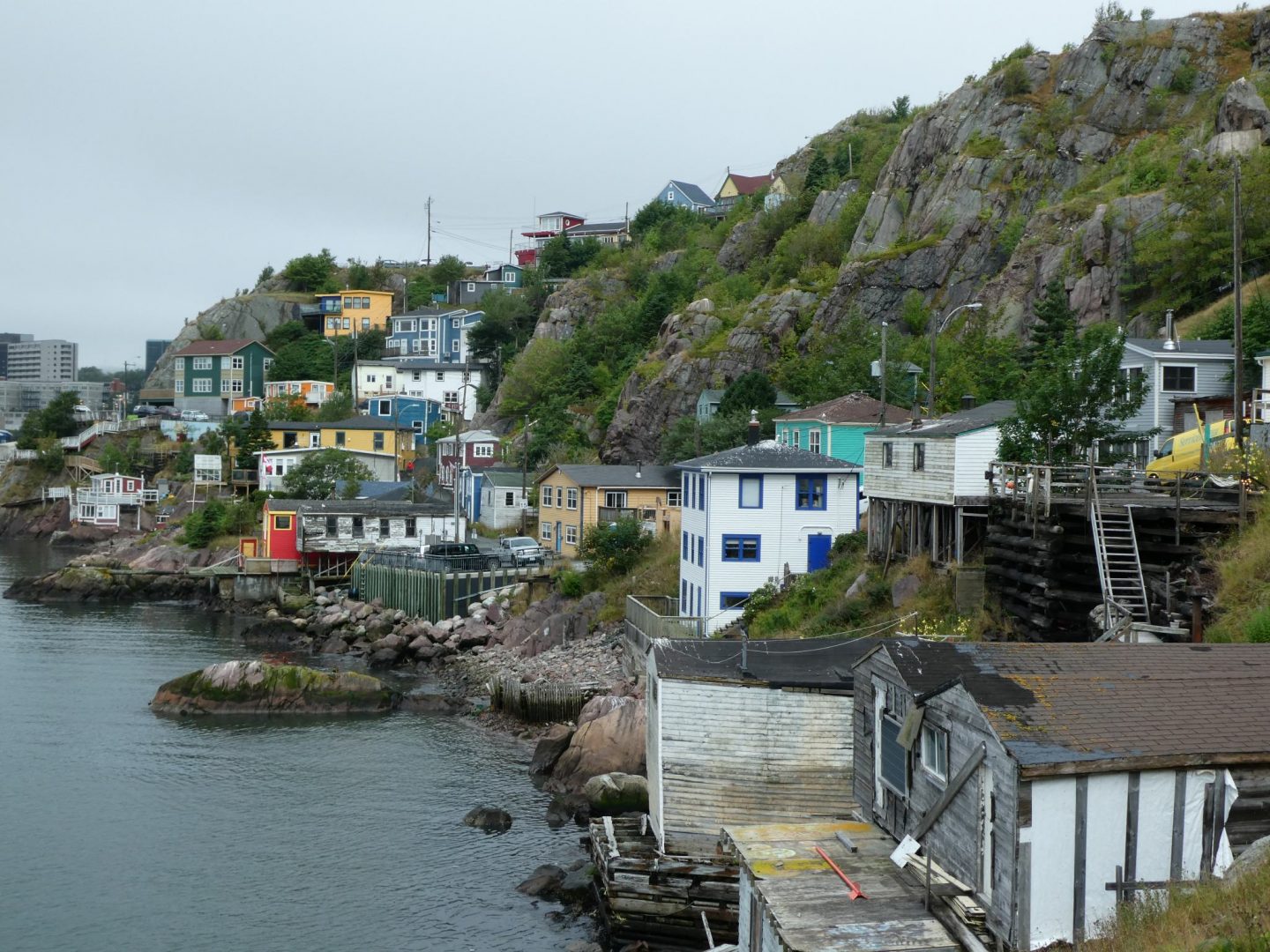 At the end of the houses are views across the narrow harbour entrance to the remains of Fort Amherst, built in the 1770s and last used as a site of gun emplacements in WWII as a defence against German U-boats.  More on that later. 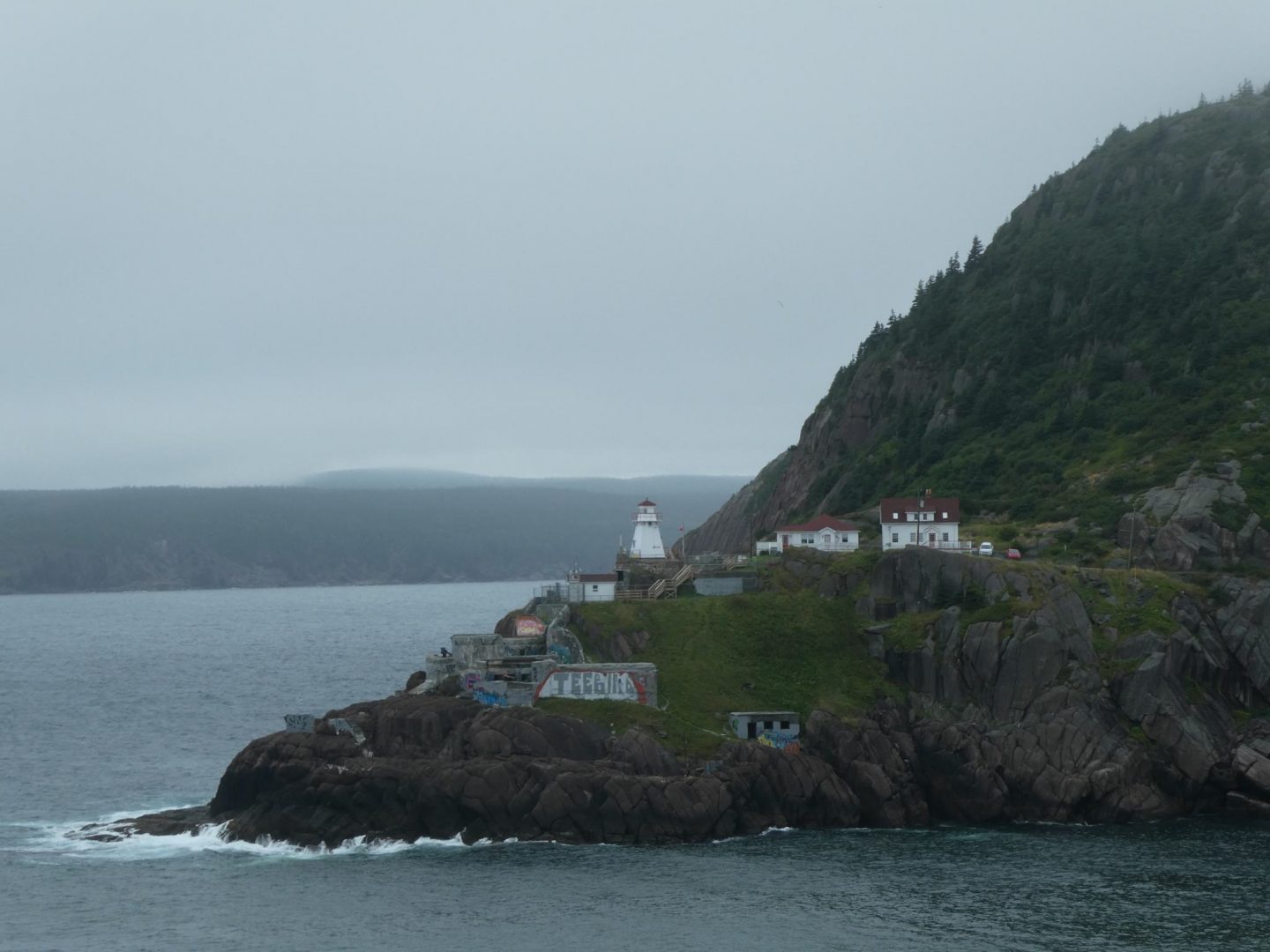 From here the North Head Trail skirts the peninsula and climbs to the top of the headland where, absent the notorious fog, there are views far out to sea.  In the early summer it’s a popular spot to watch for whales and the occasional passing iceberg. 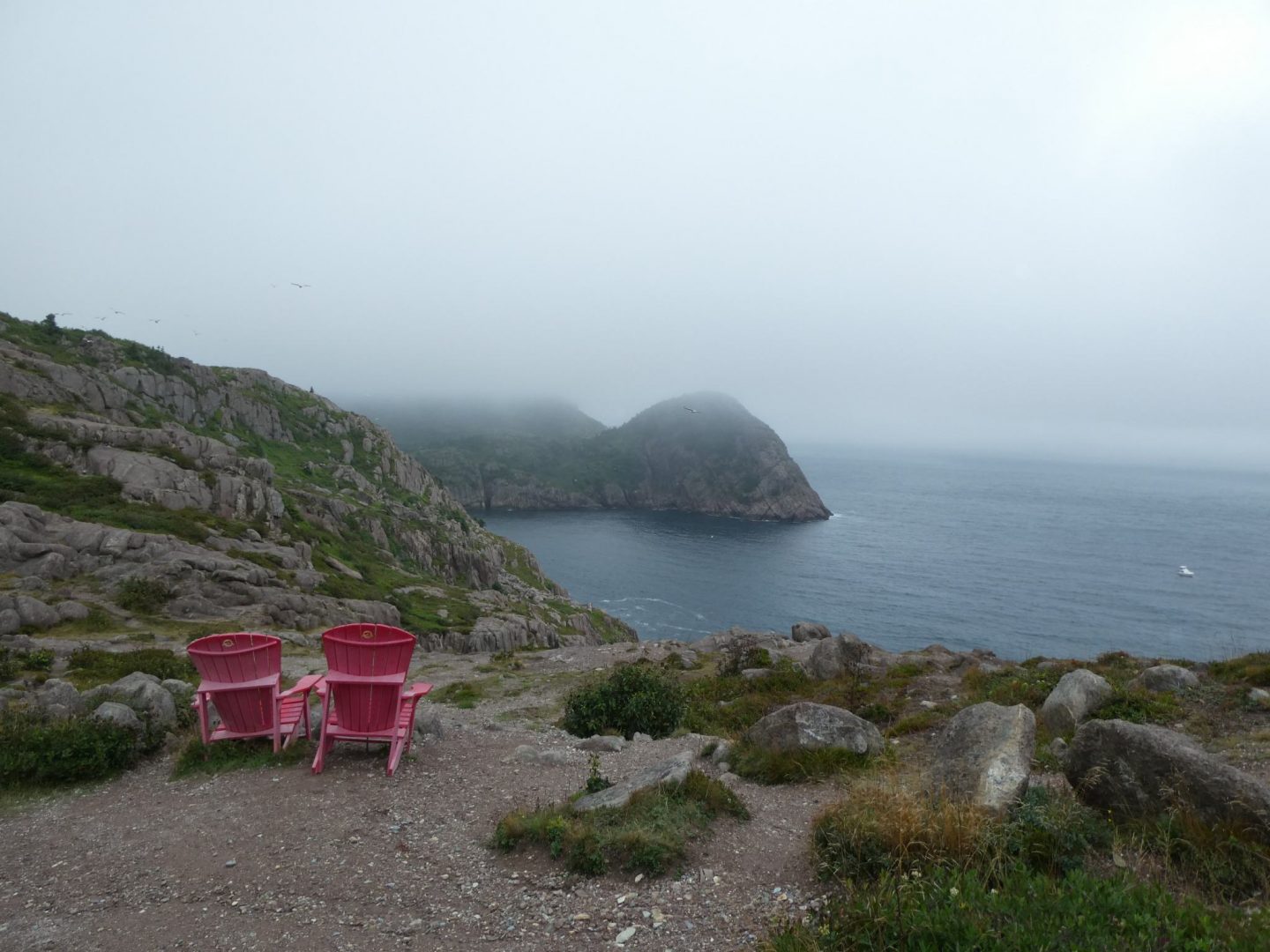 At the highest point on the peninsula is the Signal Hill Historic Site.  Visible from almost anywhere in St John’s on non- foggy days is Cabot Tower, built in 1898 to celebrate the 400th anniversary of John Cabot’s discovery of Newfoundland.

Guglielmo Marconi, popularly known as the inventor of radio, came here in 1901.  He told the local authorities he was experimenting with land-to-ship communications but his real objective was communication with Europe.  He lied because he thought if it didn’t work, the failure would count against him in raising funds for further attempts.  He need not have worried.  On 12 December 1901, a signal he arranged to be sent from Cornwall was received.  A single ‘S’ in Morse code, but it proved his technology worked.  It was the first wireless trans-Atlantic communication.

Marconi was keen to set up a permanent station here to relay messages between England and points westward into North America, but the local trans-Atlantic cable companies threatened to sue him.  They claimed he would be breaching their assured communications monopoly.  Rather than take them on, Marconi took his technology elsewhere. 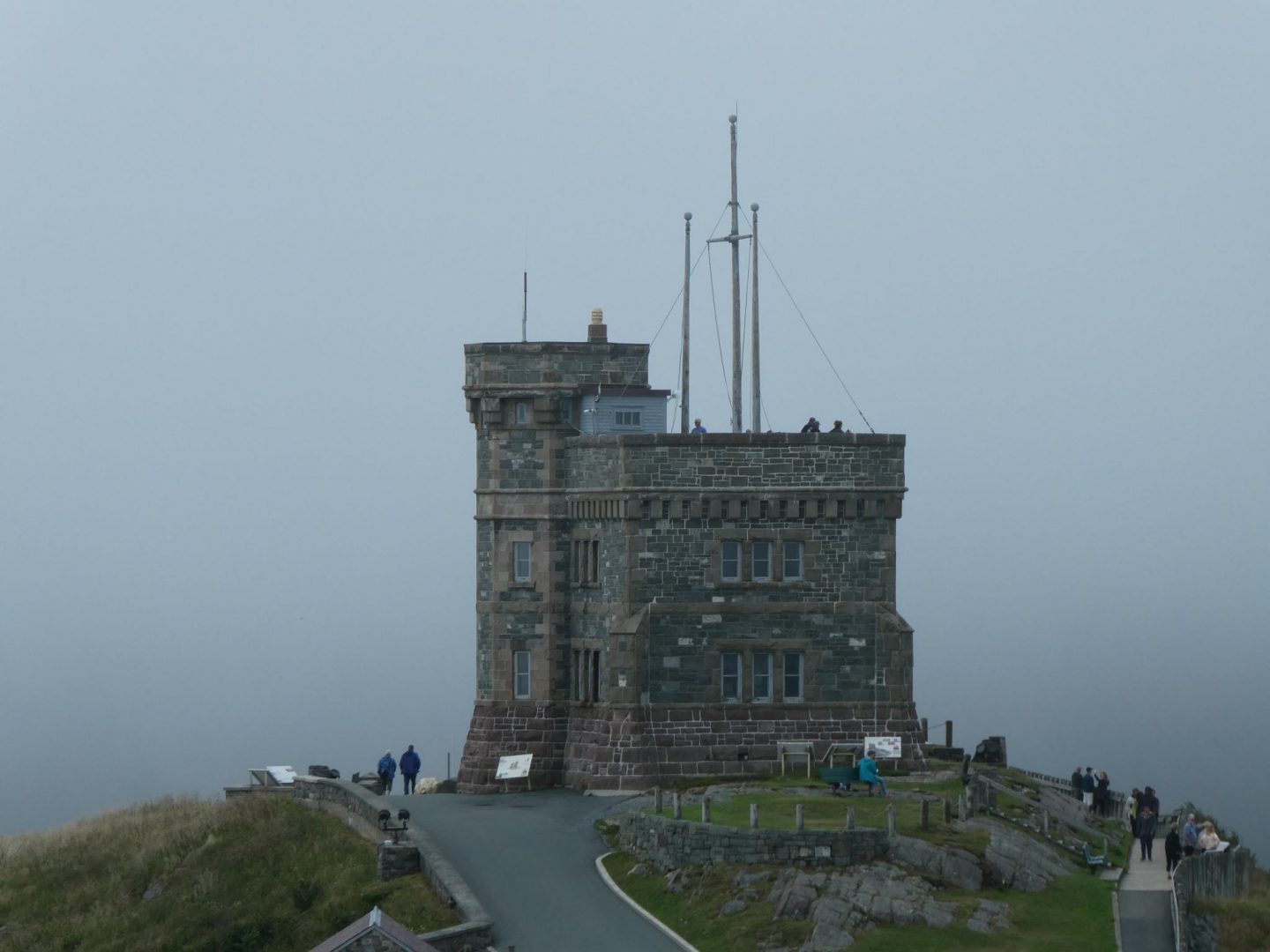 Fighting new technology almost never wins.  Within a few years, wireless had overtaken cable communication and a Marconi station was even set up in Cabot Tower which operated until wireless was itself overtaken and the station closed in 1960. Now it’s an interesting museum.

From Cabot Tower, looking across to the Queens Battery, St John’s was lost in the fog beyond. 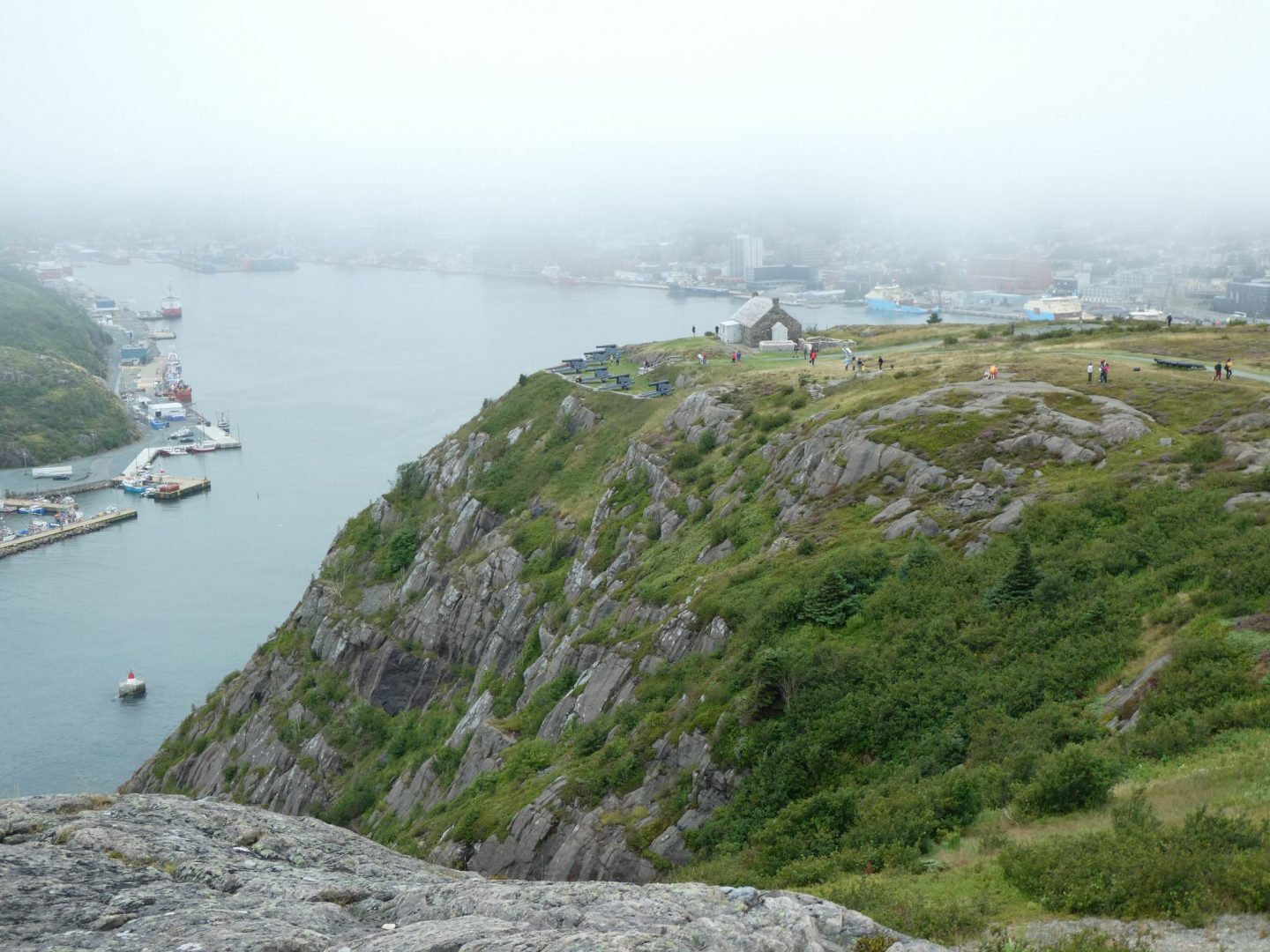 But on the other side of the peninsula the sky was clear.  Here is the cute little village of Quidi Vidi.  Lovely little port and home to Newfoundland’s favourite brewery.  At least, our favourite Newfoundland brewery.  The Iceberg lager made with glacier water is really good. 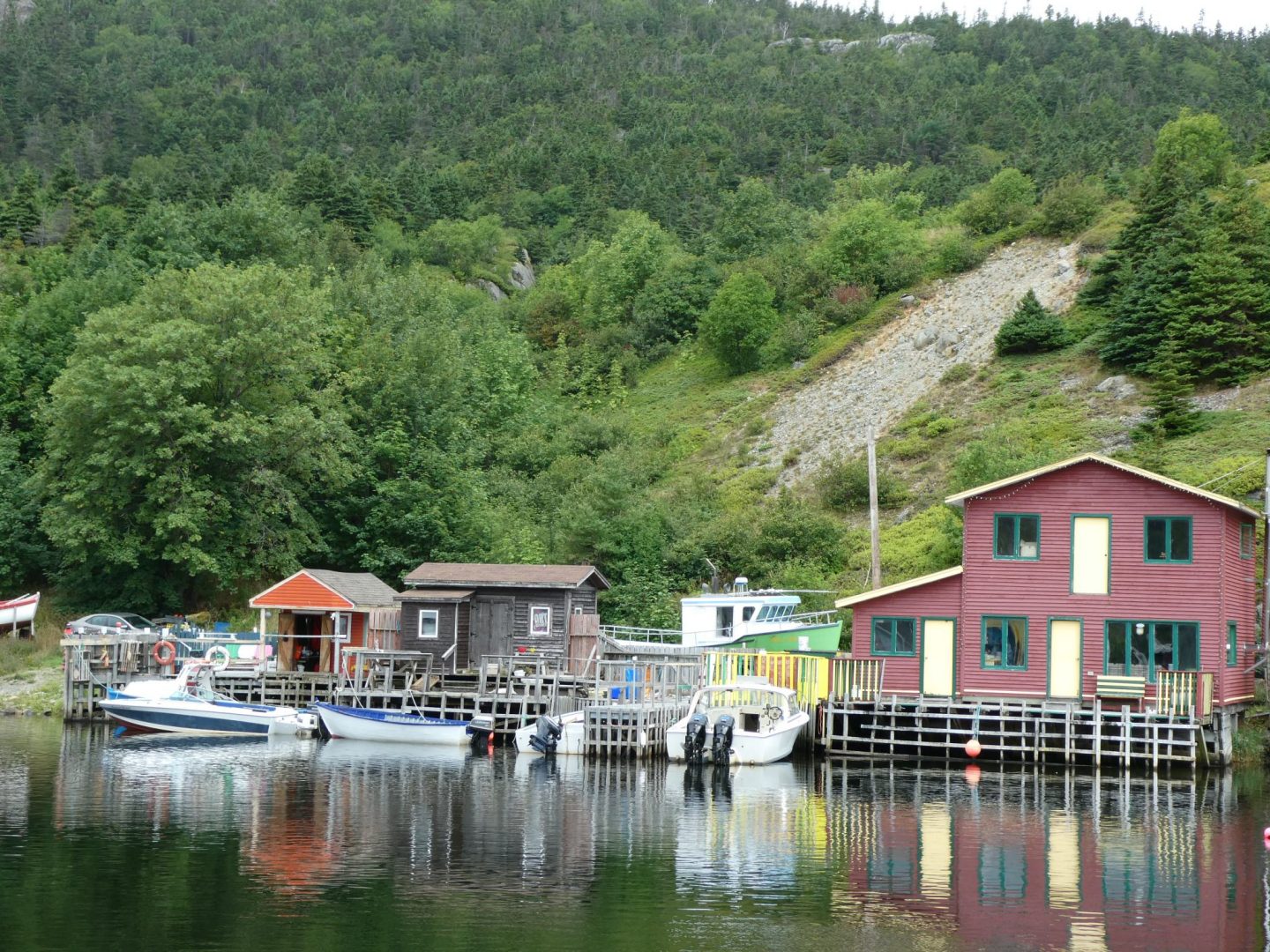 A little south east of St John’s, Cape Spear is the easternmost point in North America and the site of Newfoundland’s oldest surviving lighthouse. 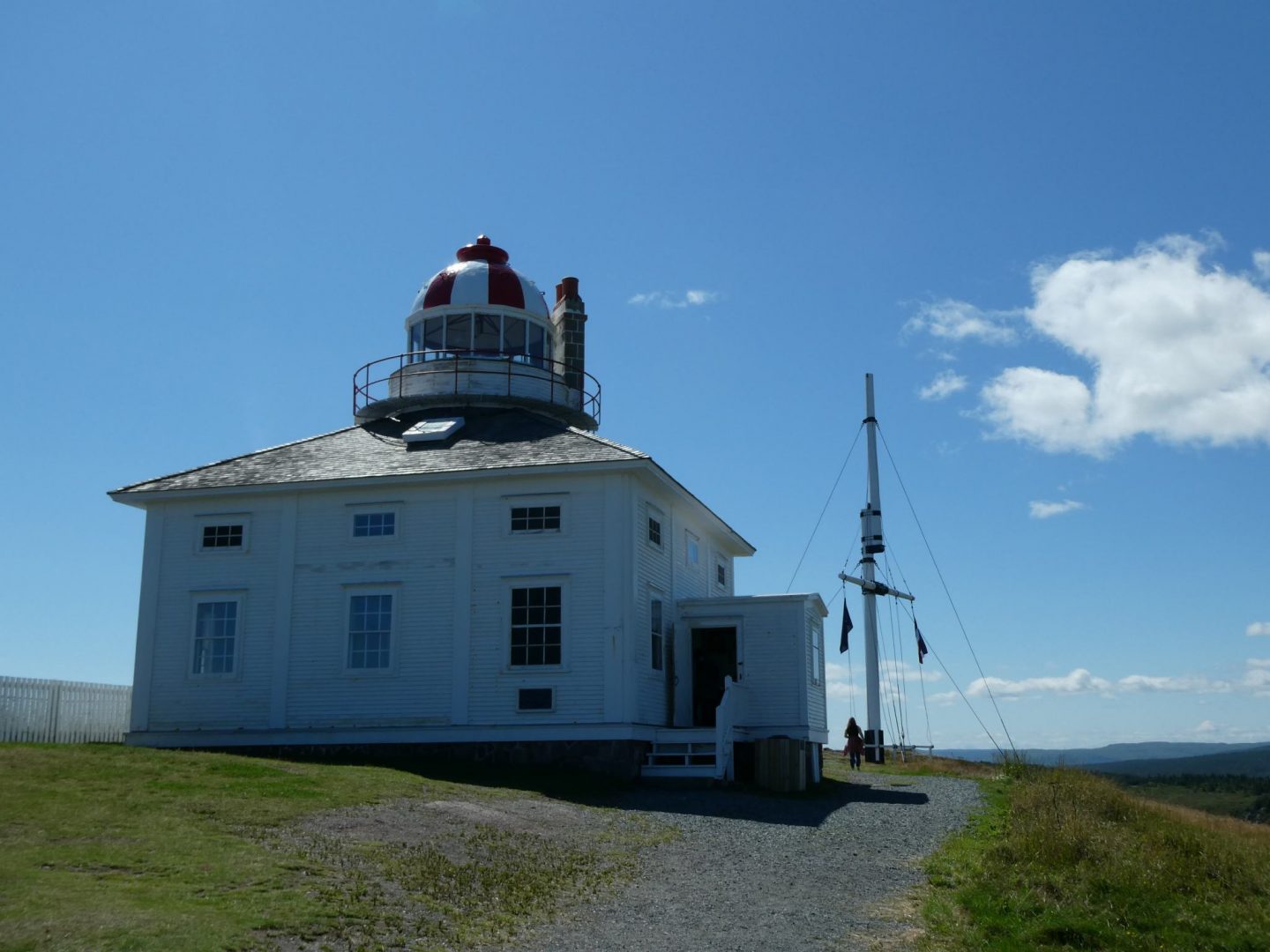 With a direct line of sight to the entrance to St John’s harbour, a fort was established here in WWII to operate in conjunction with Fort Amherst in protecting the harbour.   Although there were two successful attacks by German U-boats on ships in the open ocean, the harbour was never breached.  But here’s an embarrassing tale –  on 1 February 1944 a U-boat was forced to surface for repairs after striking the bottom close to the harbour entrance.  The captain emerged, hoisted the German flag, gave a rousing speech and prepared to surrender.  Nothing happened.  The crew made the necessary repairs and the U-boat submerged and sped away.  No one at Cape Spear had seen a thing.  Oops.

The old gun placements and bunkers are open and on a bright sunny day, it was lovely to wander along the cliffs. 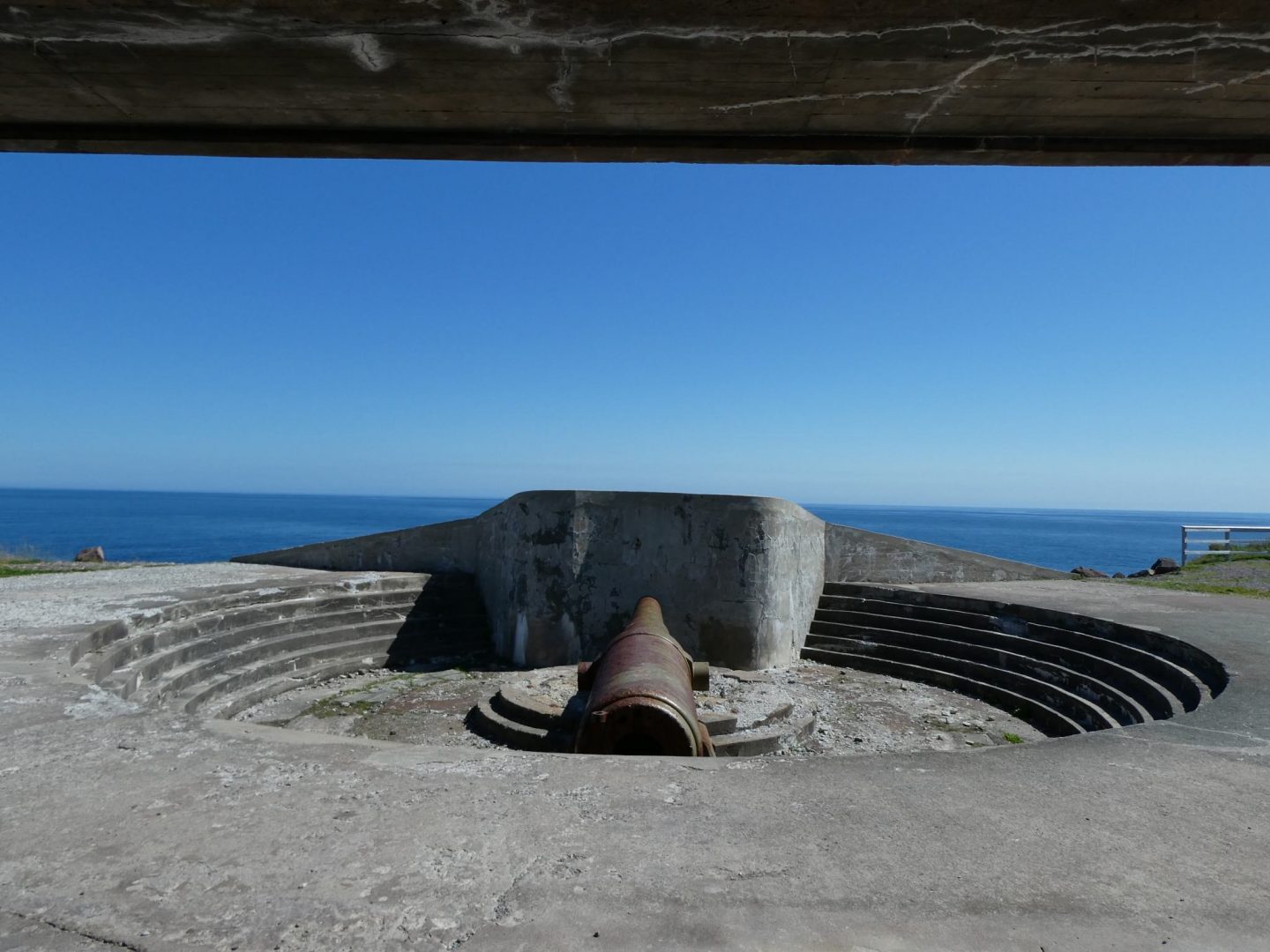 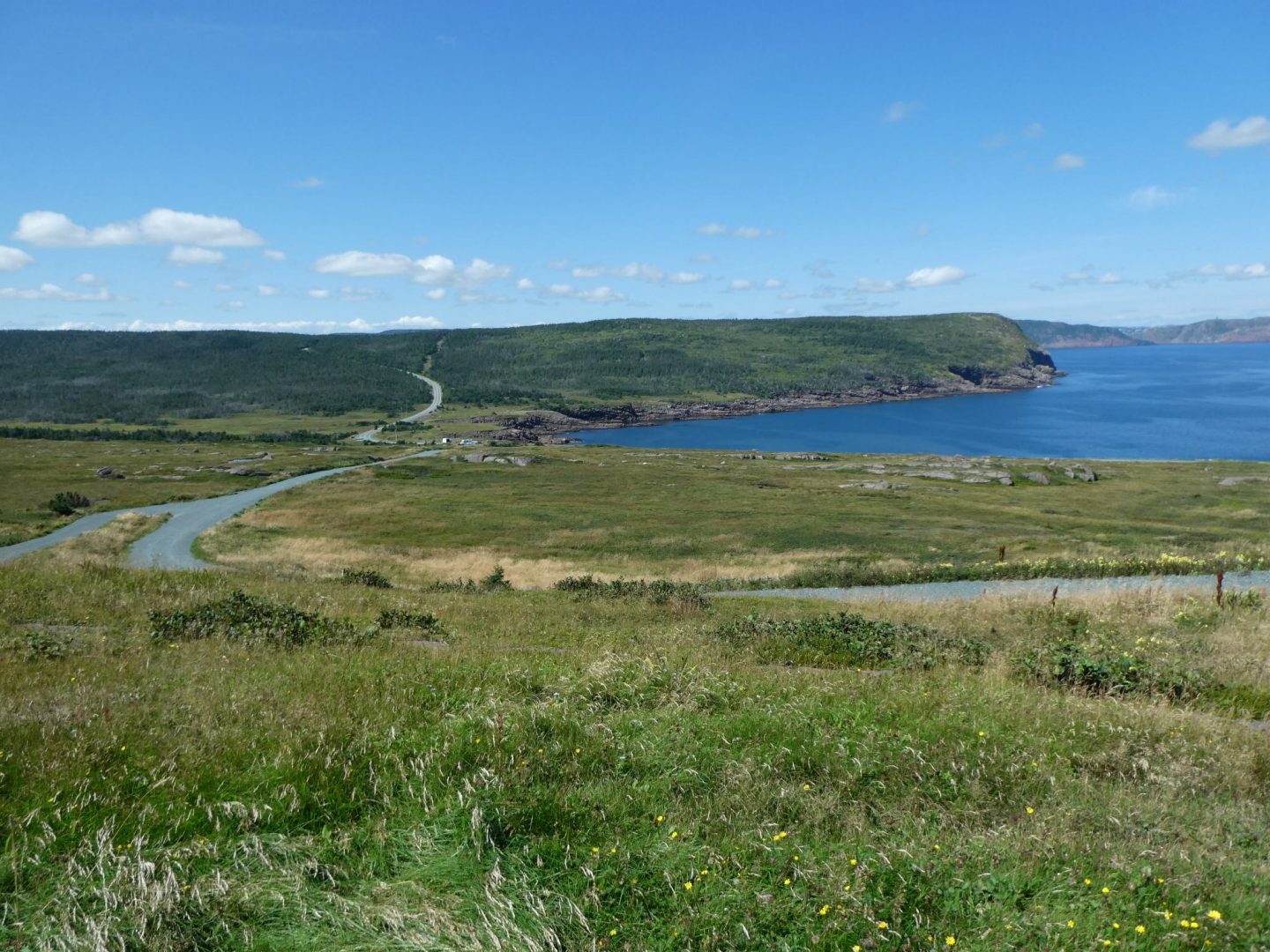 Established around the same time as St John’s and still a community of less than 1,000 people, Petty Harbour is about as pretty as you can get.  It’s only 15 minutes drive south of St John’s.  Stunning. 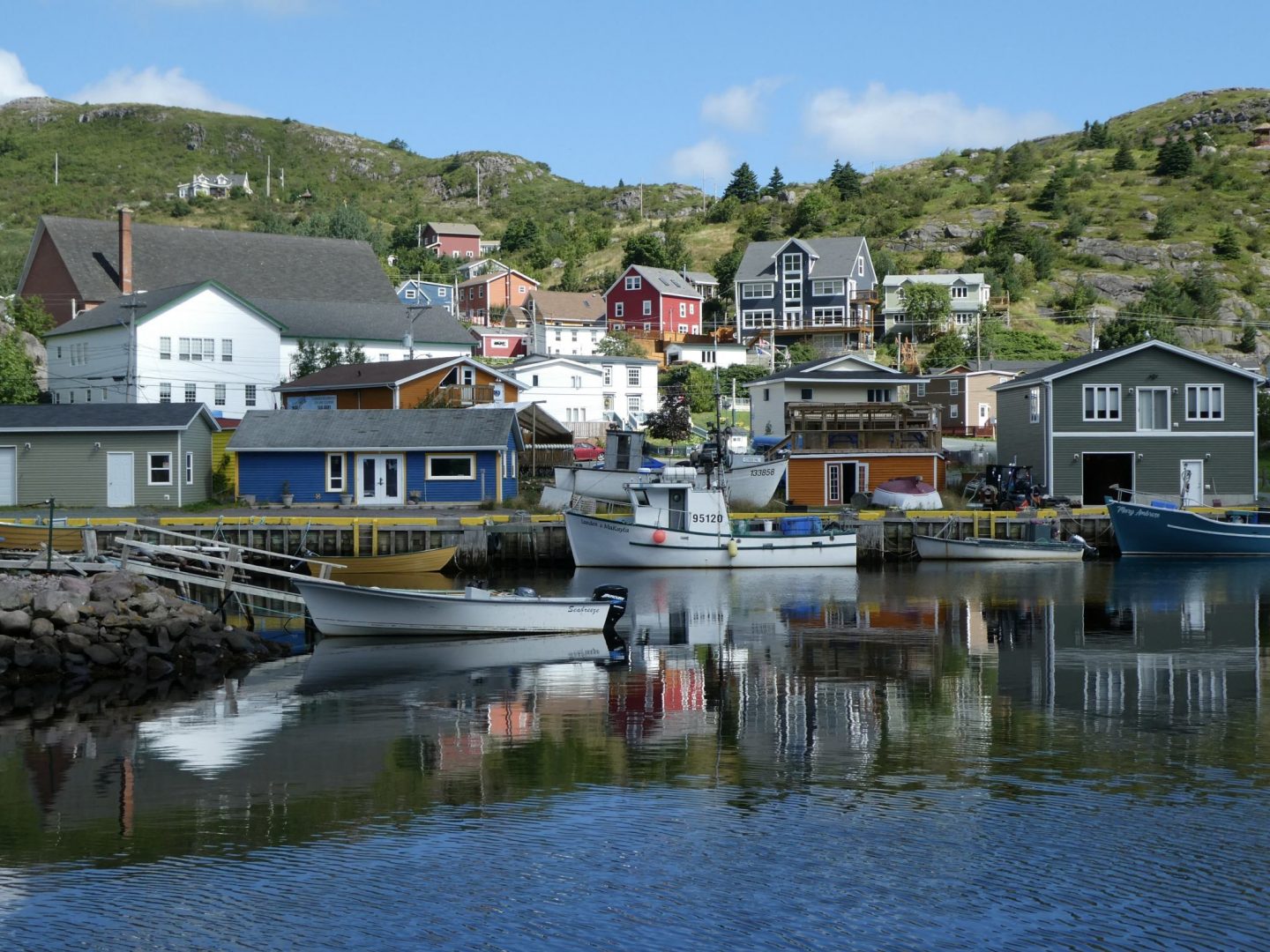 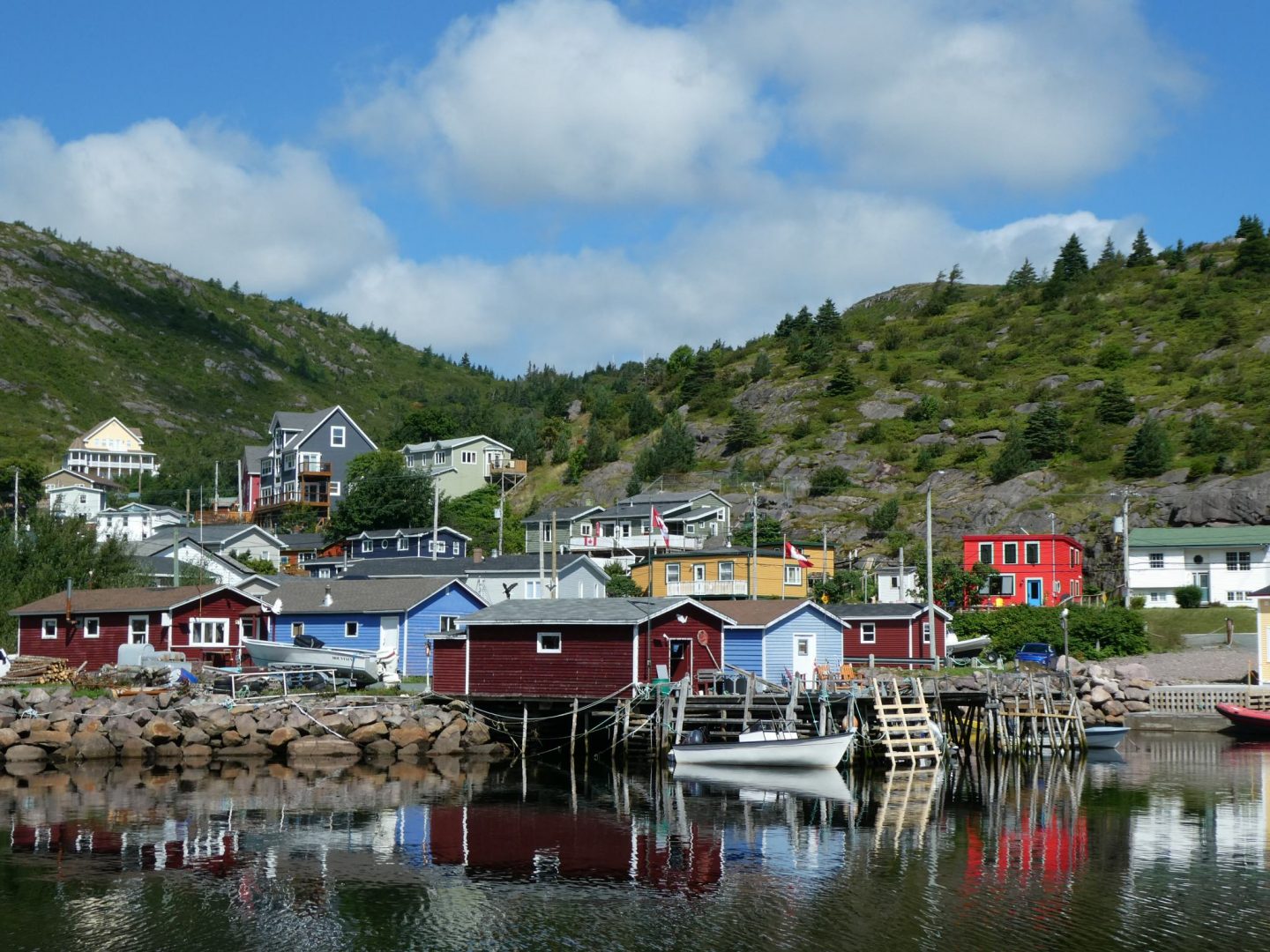 It doesn’t take long to realise Newfoundland is very different to the rest of Canada.   You get the feeling people here are Newfoundlanders first and Canadians second.  Perhaps being an island has something to do with it.  And/or that it only surrendered its Dominion status and became part of the federation of Canada in 1949, the last province to join.  Its distinctive cultural identity drawn from a history as isolated, hard scrabble fishing communities and marginal farms remains strong.  Anyone not born in Newfoundland is a ‘come from away’ no matter how long they’ve lived here.

The accent is different, there’s unique ‘Newfie’ slang which is not just a gimmick to sell t-shirts to tourists.  The tradition of music which started with Irish crews on the English cod fishing boats, lives on.  Every pub you pass in St John’s has live music.  In one we watched two guys doing ‘recitations’, a traditional form of entertainment in which the performer tells short, often whimsical tales, and singing their own songs with just a guitar and an accordian.  It takes a lot to keep us interested in an accordion player, but when he’s telling stories about the crazy things that happened during a local electricity shortage, or the weekend he left a tray of fish in his basement and returned to the smell of putrification and the ire of his neighbours, or a weekend camping in the rain with his dog, it was all very entertaining. 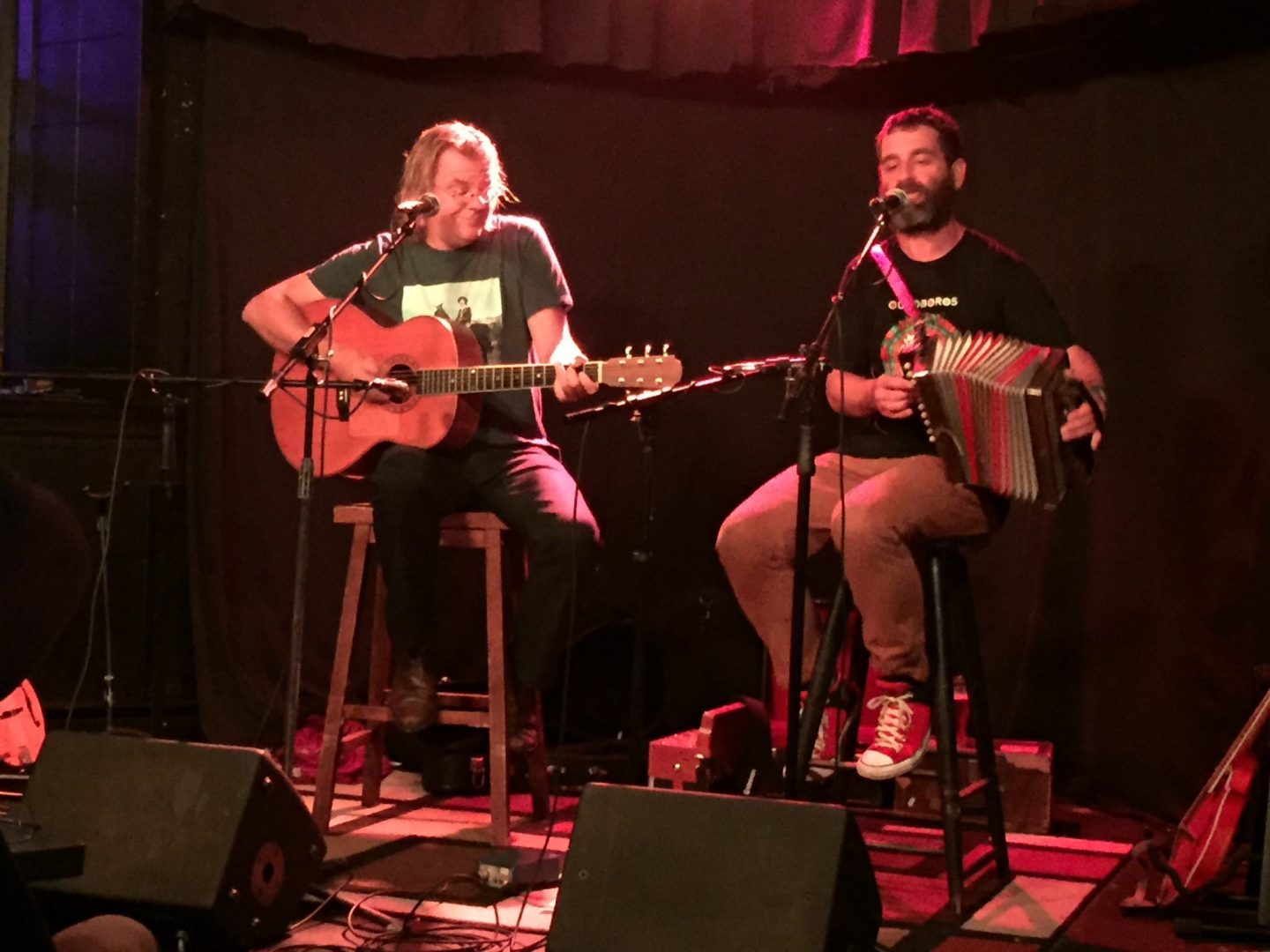 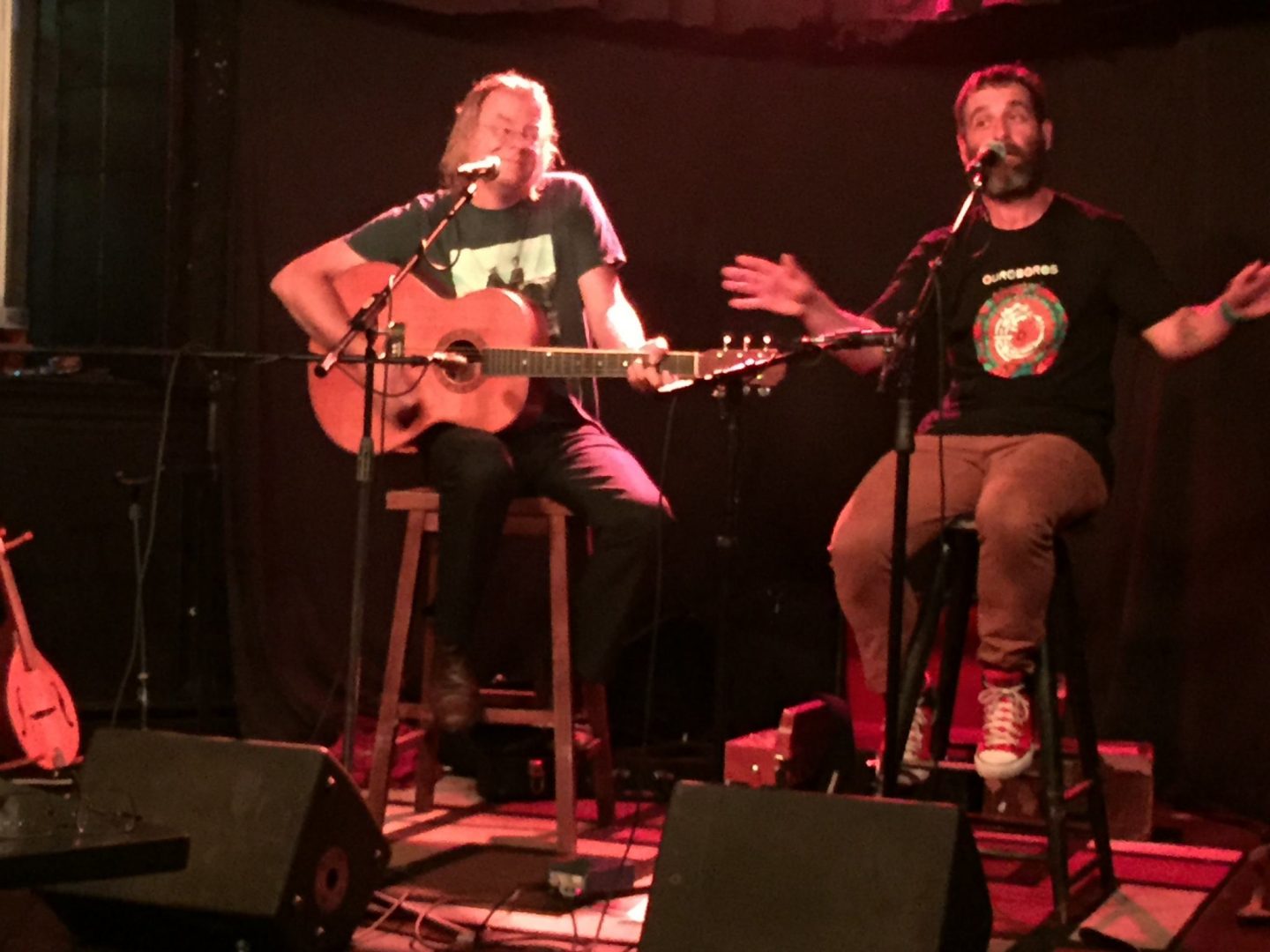 It’s evident in the food too.  And again, not for tourists.  Indeed, quite the opposite.  Food that locals eat because they always have.  We don’t usually post food photos on the blog but these local dishes are worth a mention.  And since we don’t usually photograph food, Julie filched these pics off the internet.

Cod tongues and scrunchions: not actually the tongue, these are the small muscle in the fish’s neck, lightly floured and pan fried.  Served with scrunchions – little flavour bombs of finely diced pork fat/skin deep fried with salt, like pork crackling taken to the next level.  Absolutely delicious. 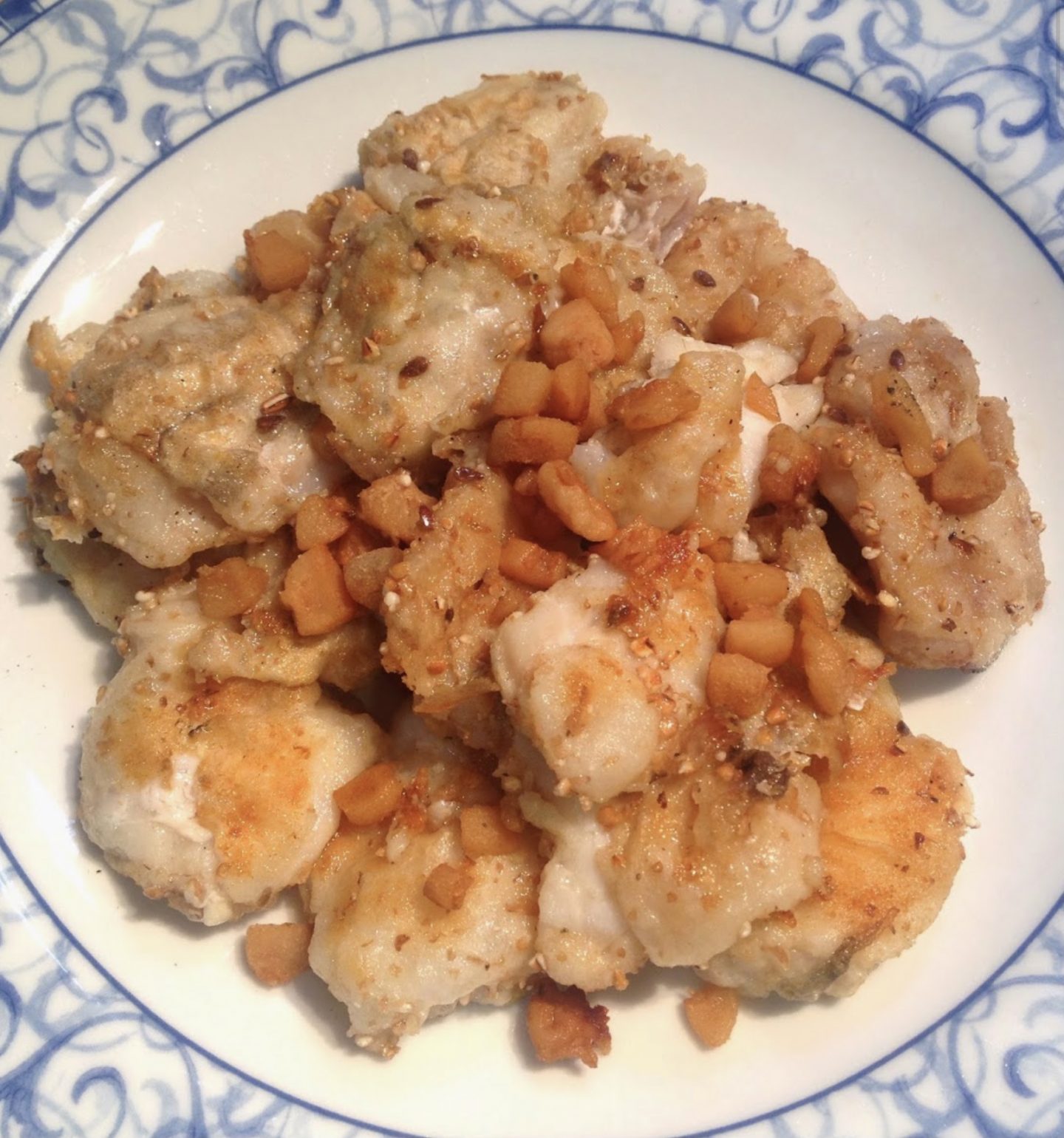 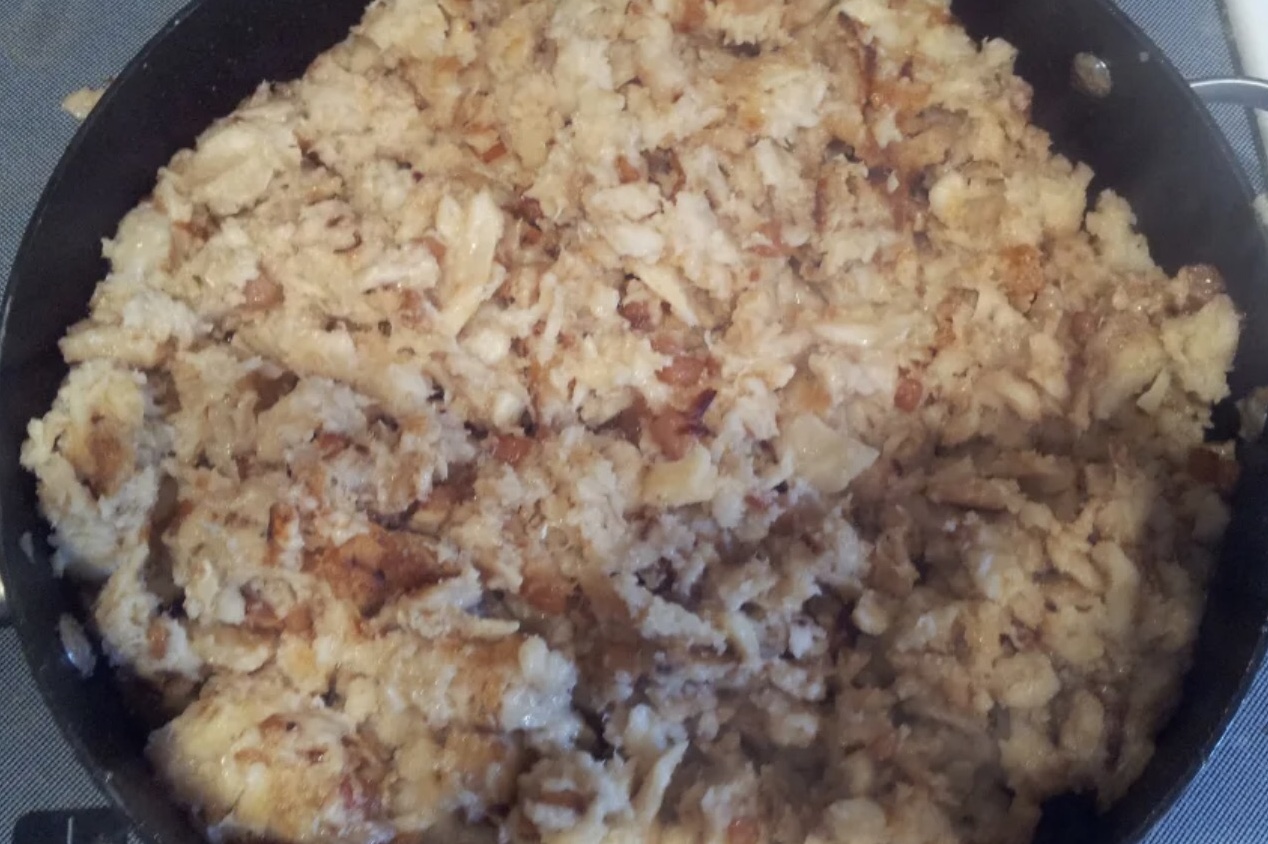 Toutons: deep fried bread dough often served with breakfast.  Probably a tourist version, we had them at dinner with local scallops, drizzled with syrup and sprinkled with bacon.  Yum. 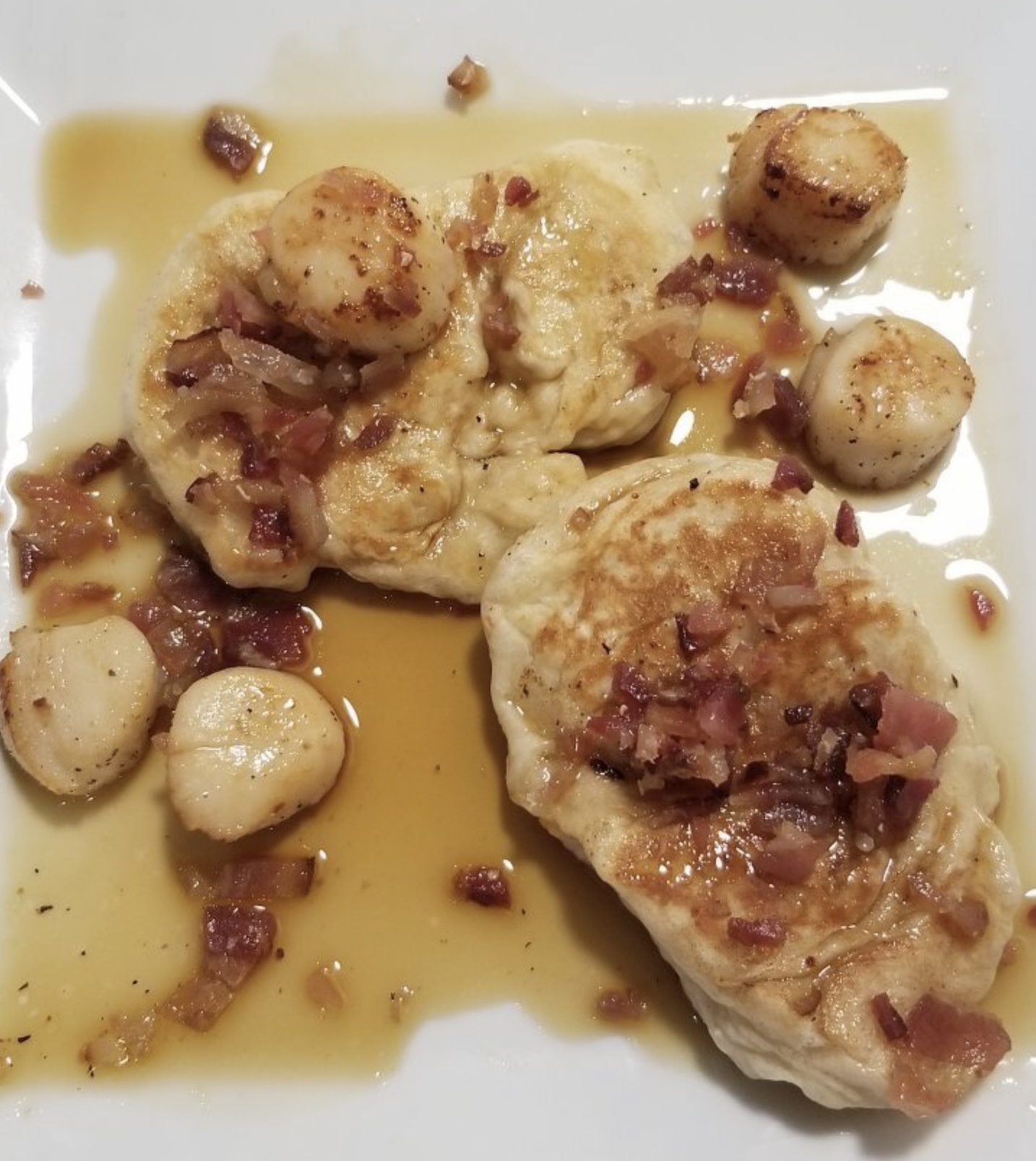 In the 1800s rum was shipped to Newfoundland in exchange for salt cod sent to the Caribbean to feed slaves.  Duty was paid on alcohol according to volume not potency. To maximise profit, a special rum was developed with a whopping 70% alcohol content, meant to be diluted once imported.  It didn’t always happen that way.  Newfoundlanders developed quite a taste for the strong stuff.  The term ‘screech’ came to mean any potent rot gut alcohol but was almost always rum.  And a ‘screech-in’ was a ceremony in which a ‘come from away’ was deemed an honorary Newfoundlander, strictly by invitation only, after throwing back a glass of screech and kissing a cod.

Now you can get a locally bottled Jamaican rum simply called Newfoundland Screech at a more conventional 40%.   Surely kissing cod is strictly the domain of tourists these days, but by all means, wash your dinner of cod and scrunchions down with a glass of screech and the traditional Newfie toast ‘Long may your big jib draw”.