From the Avalon Peninsula we headed up to the Bonavista Peninsula.

The town of Trinity is a jewel in Newfoundland’s tourism crown.  It was first used as a seasonal fishing station in the 1570s.  With a sheltered harbour and broad shores ideal for wharves and fish-drying stations, it developed into a prosperous merchant town by the 1800s.  Its population peaked in 1869 at just over 800 and in its heyday Trinity’s merchants were responsible for the export of 40% of the cod and seal product coming out of Newfoundland.

It’s much smaller now – just 76 people according to the 2021 census – but conscious preservation of its 1880s built heritage allows it to claim the title of ‘most notable heritage community’ in the province.  It’s truly lovely. 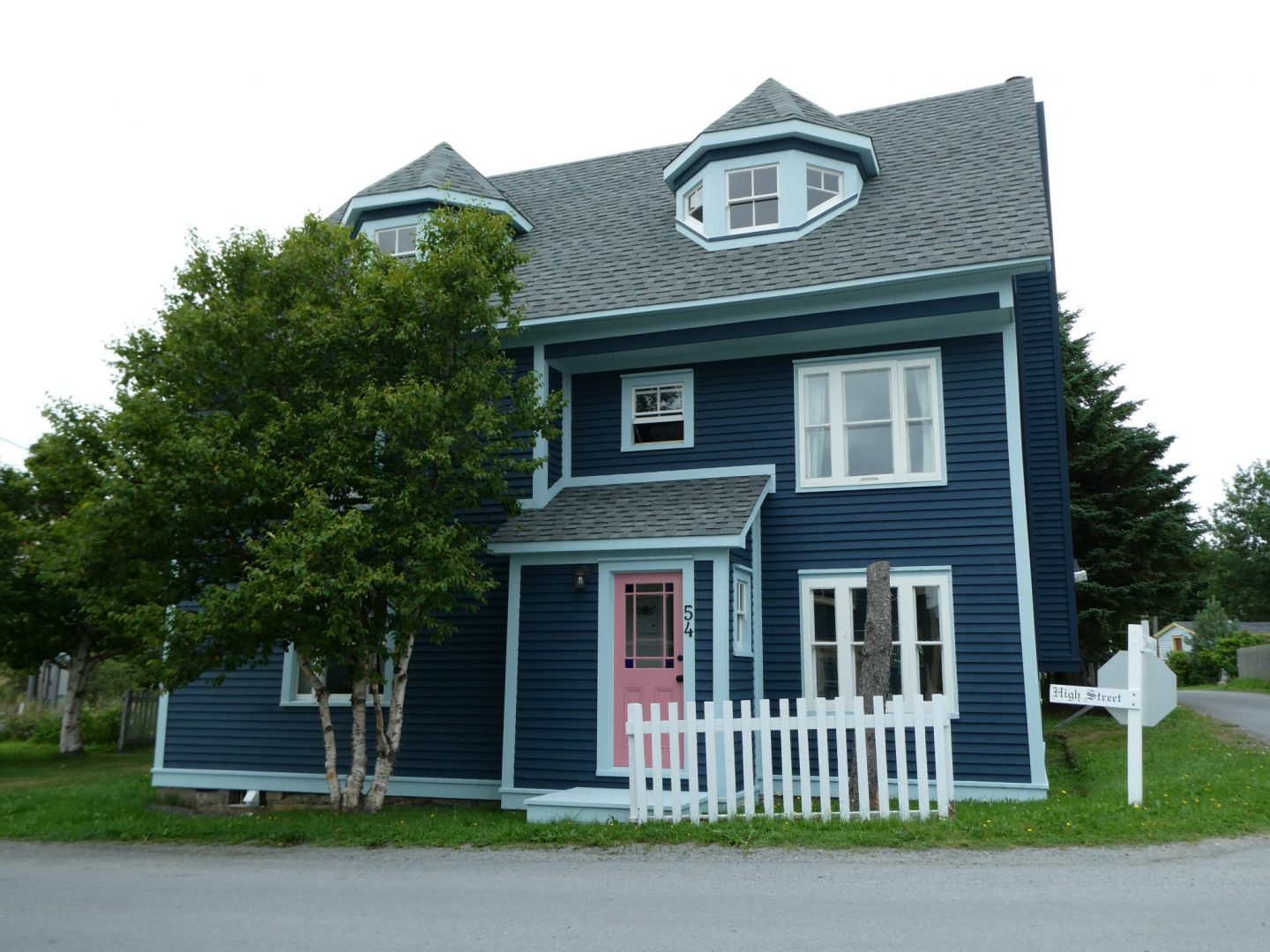 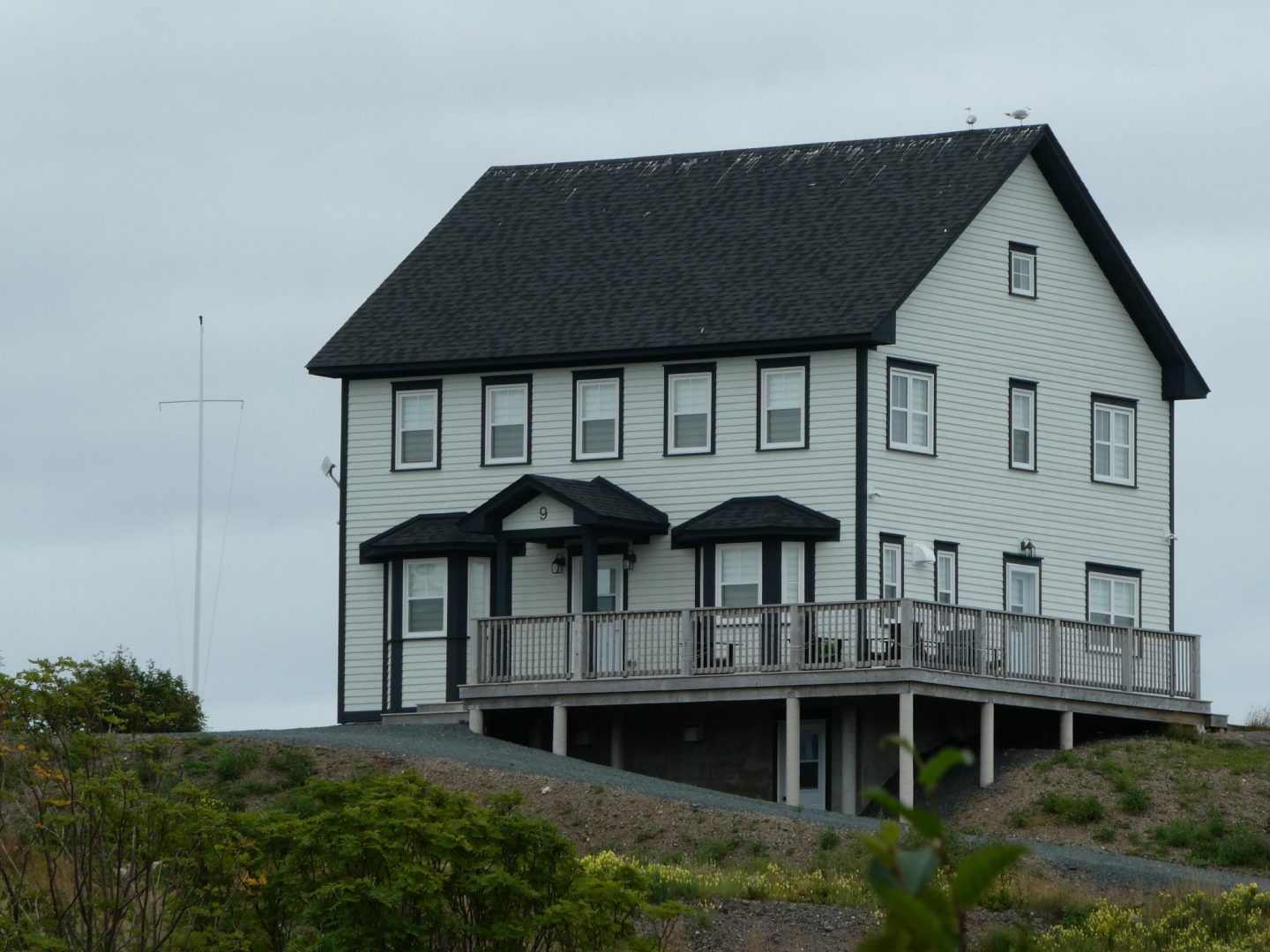 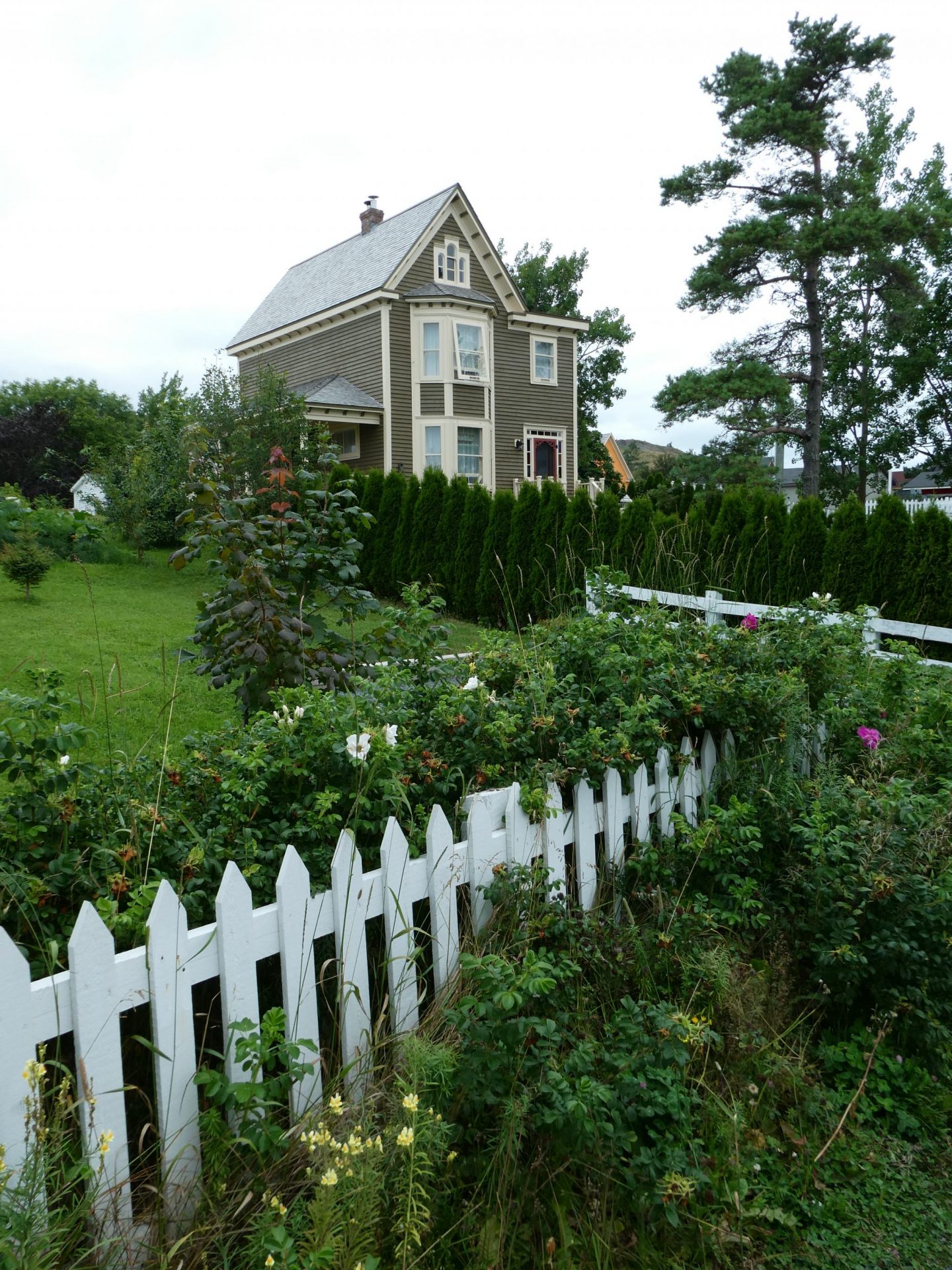 If it looks familiar, maybe you’ve seen the film The Shipping News.  Both of us loved the book, which is set in an imaginary town in Newfoundland.  The movie adaptation was filmed in Trinity, and although we both loathed the film, it was interesting to see the locations.

This church is prominent in the background of a few scenes. 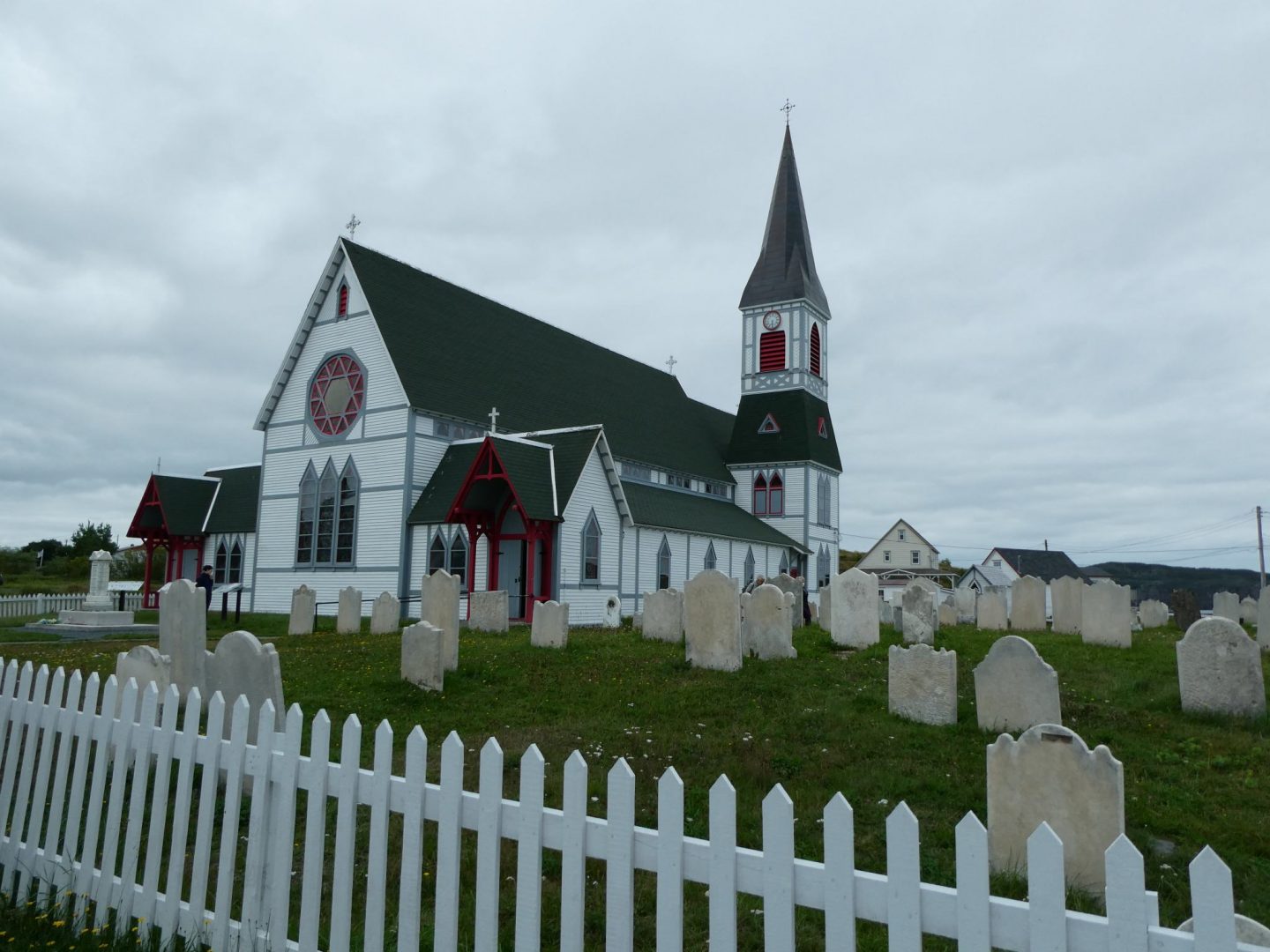 There were scenes shot around the harbour. 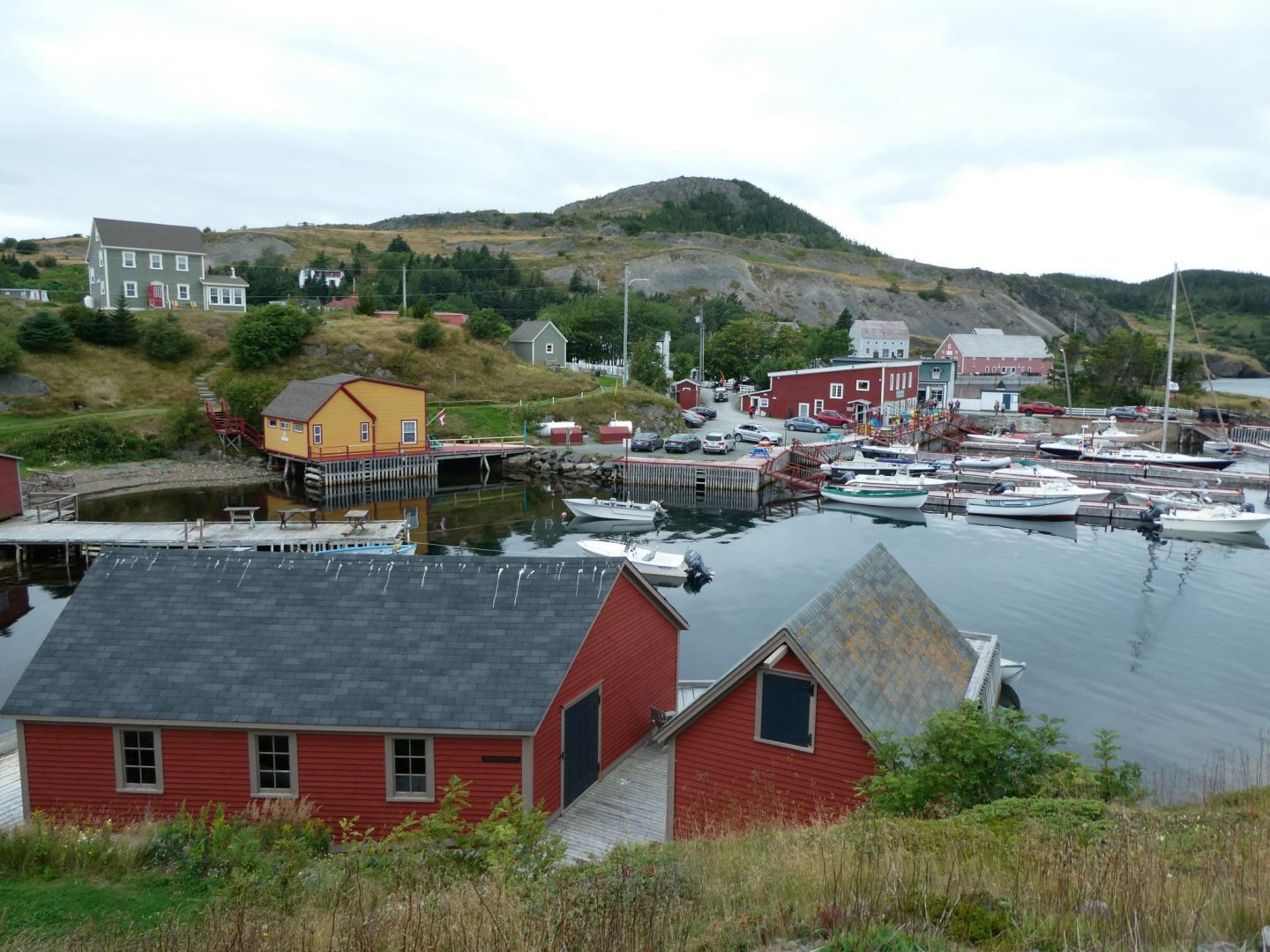 Any of the houses on the point could have been the Quoyle house. 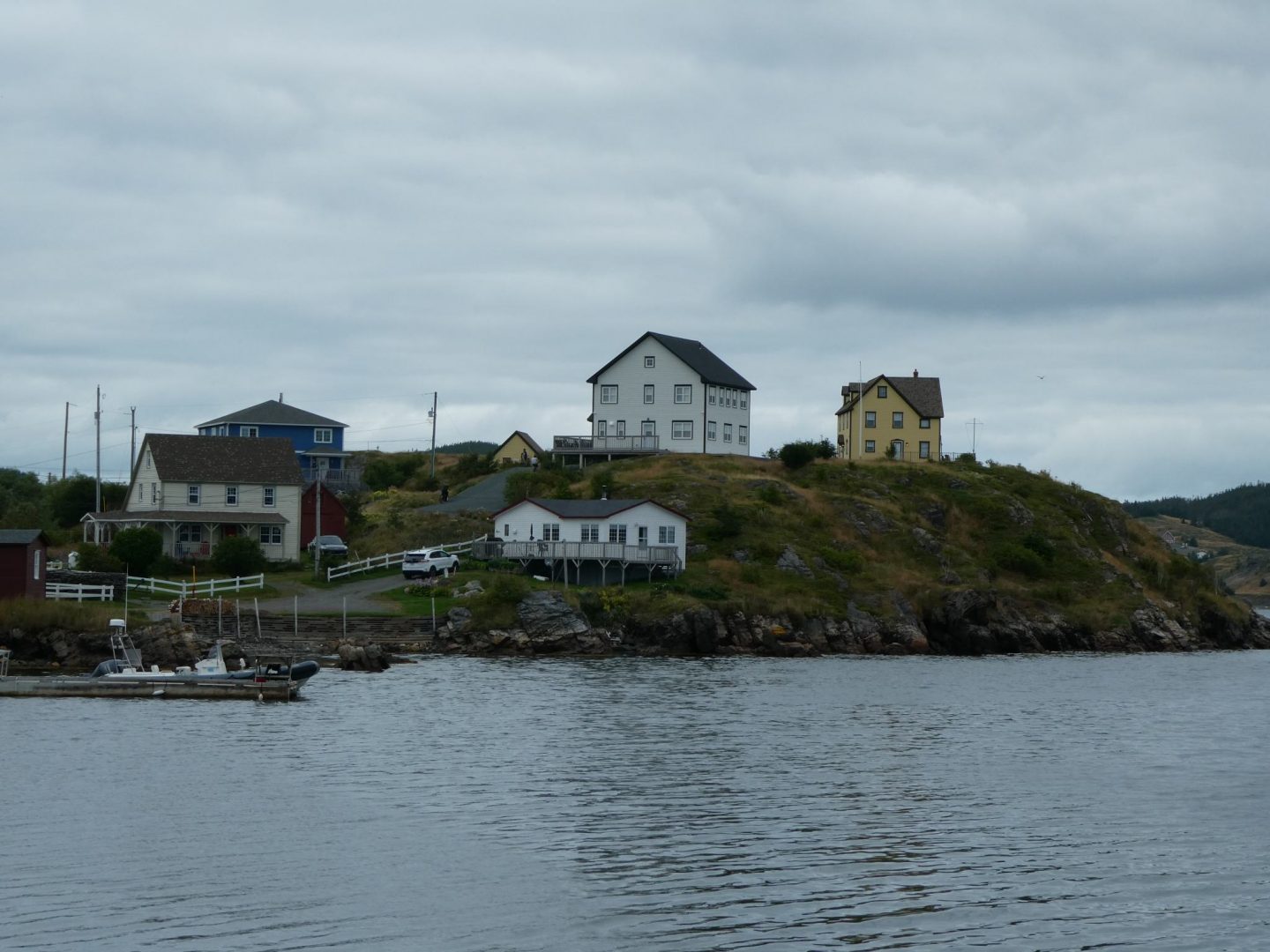 But actually they aren’t. The house was a set erected near the lighthouse across the bay and was demolished when filming finished. 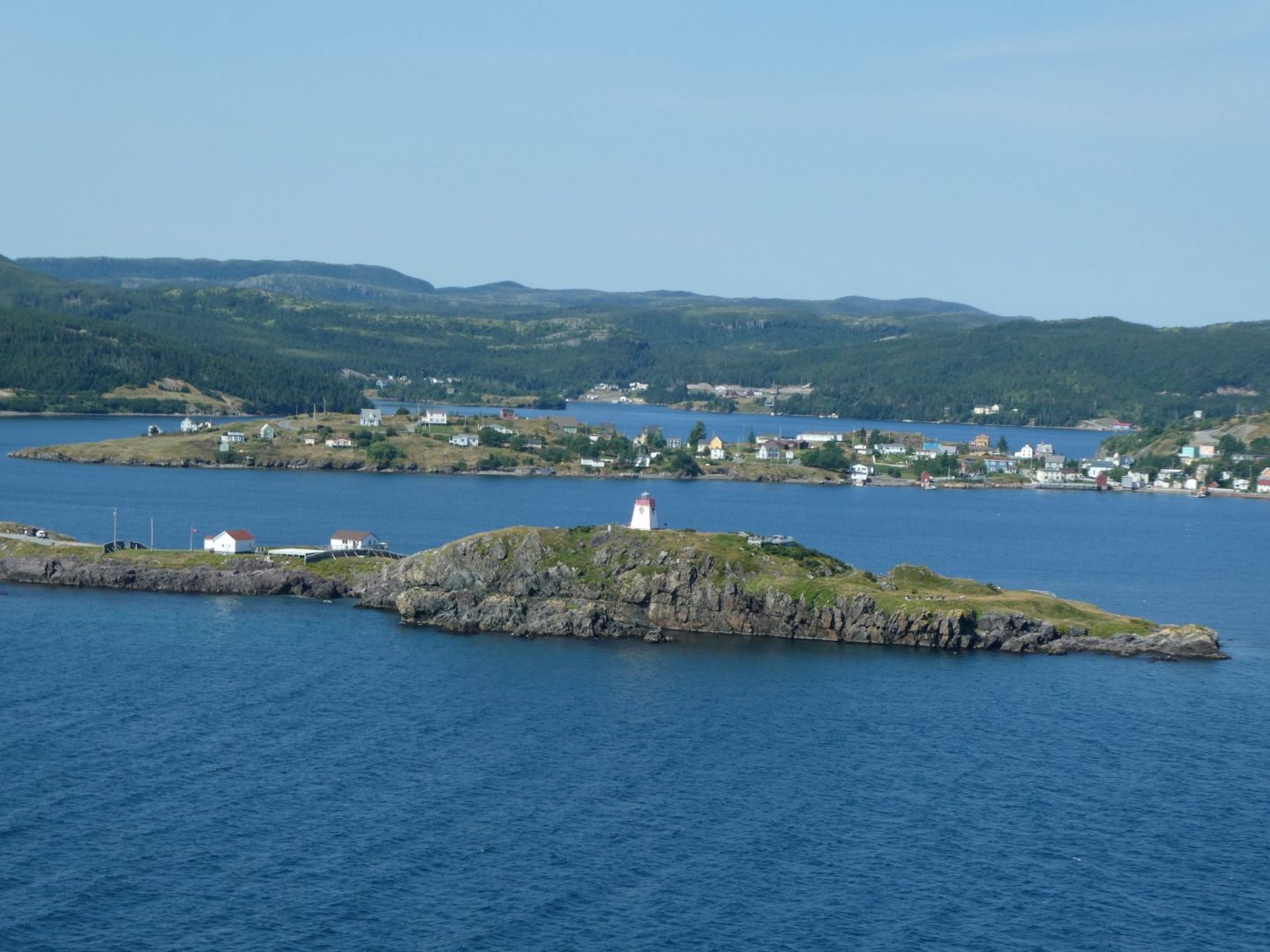 Between Trinity and nearby Port Rexton is the Skerwink Trail.  Travel and Leisure magazine named this 5.5km loop one of the ‘top 35 walks in North America and Europe’.  We had the brightest of bright blue days and the walk was stunning. 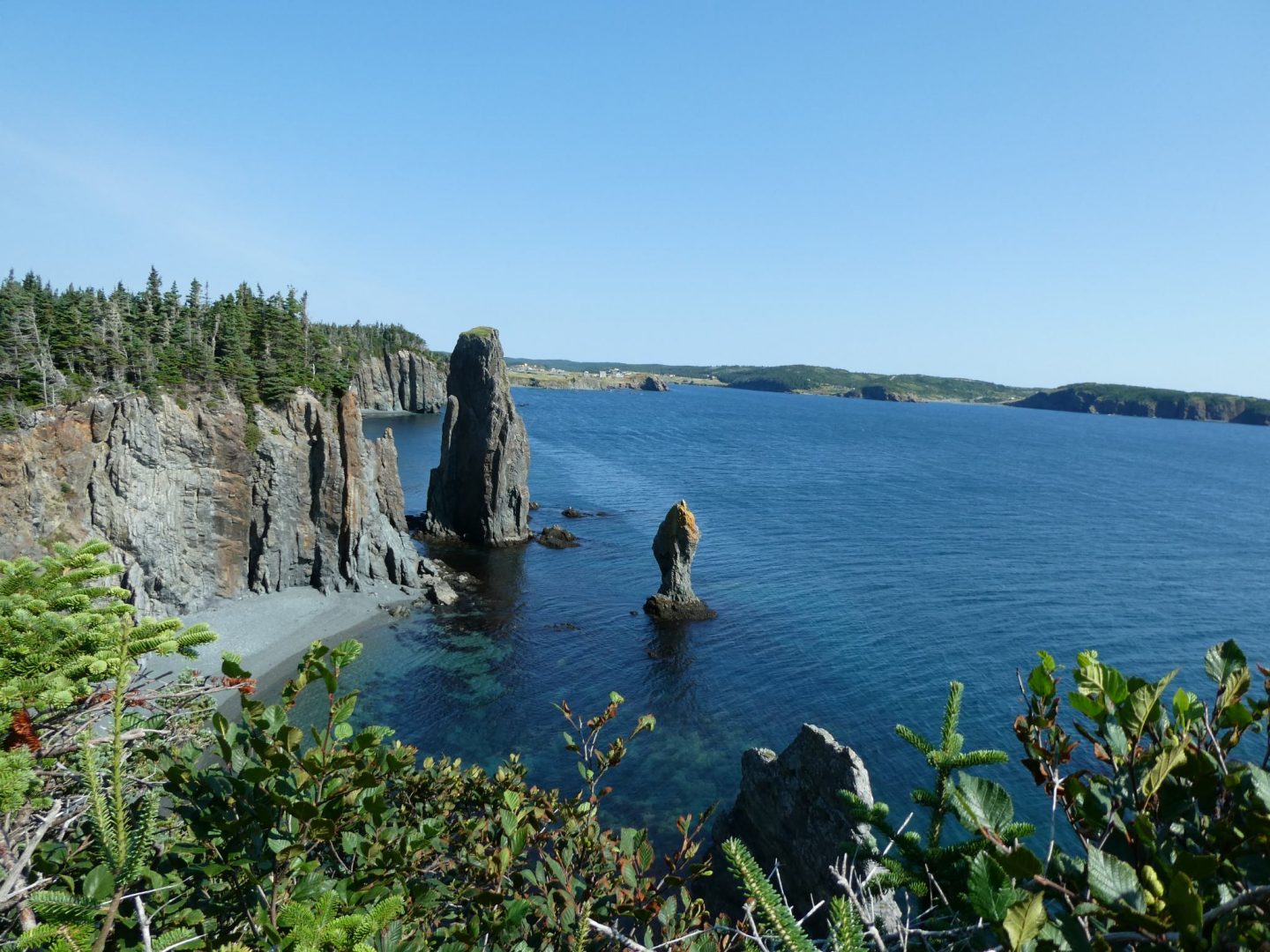 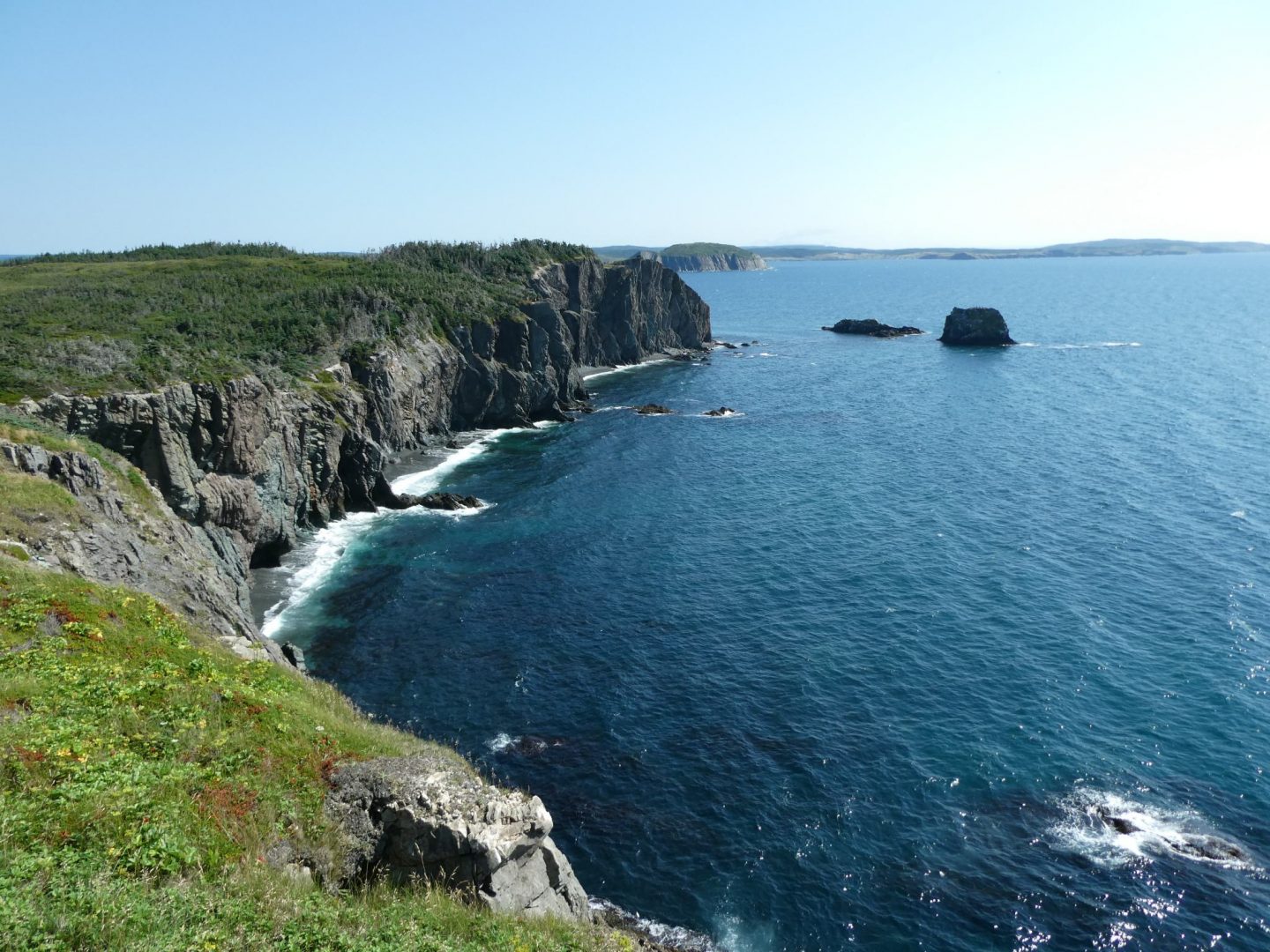 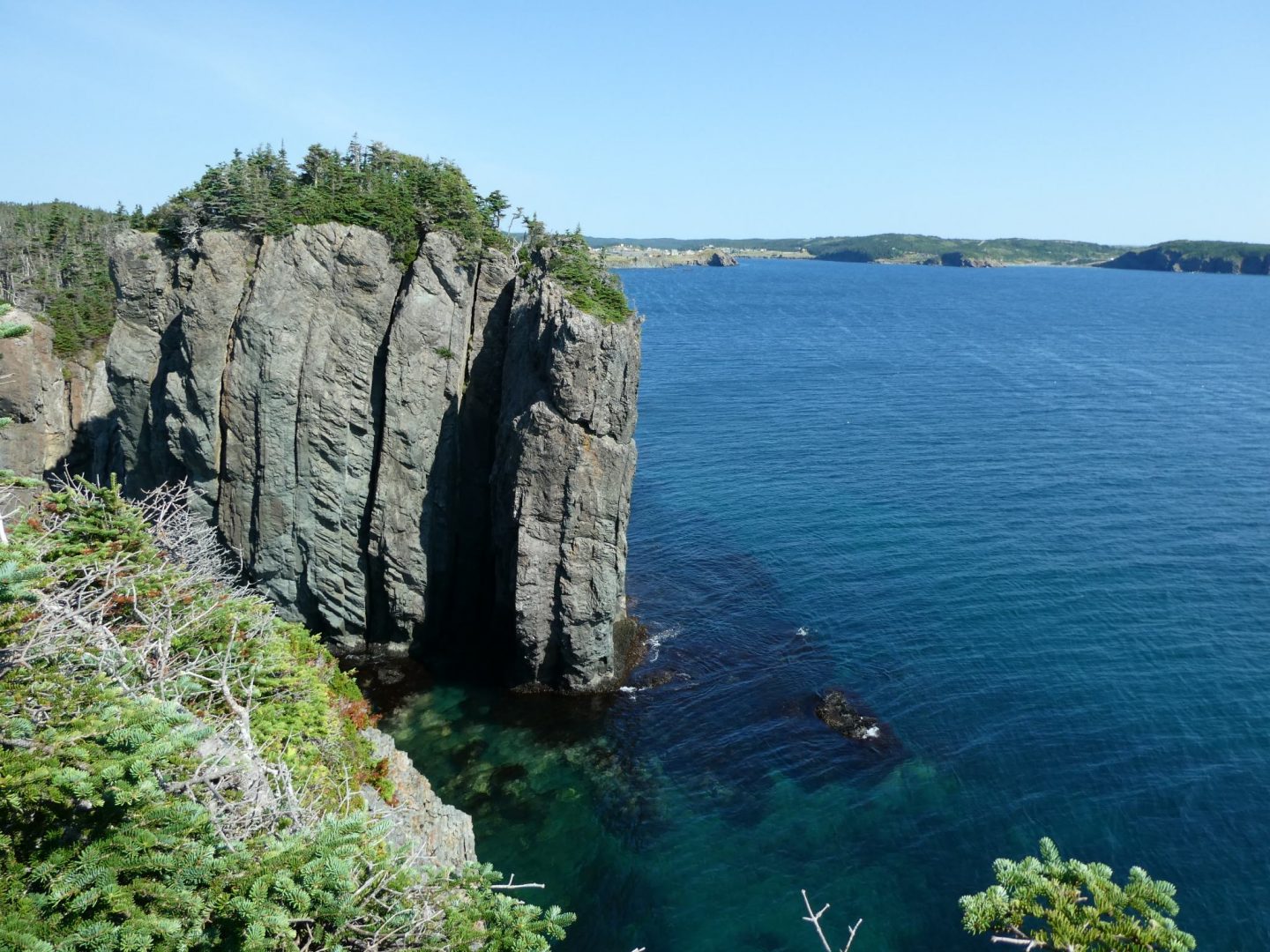 On the western side of the peninsula is the town of Bonavista.

In 2018 Chevrolet held a competition which resulted in it being named the ‘most road-trippable’ town in Canada.  Not sure there is such a word, but it’s a good marketing angle for the town, which is indeed a very pleasant place to stay for a few days.   It has a few arty shops and a surprising number of restaurants for its size. 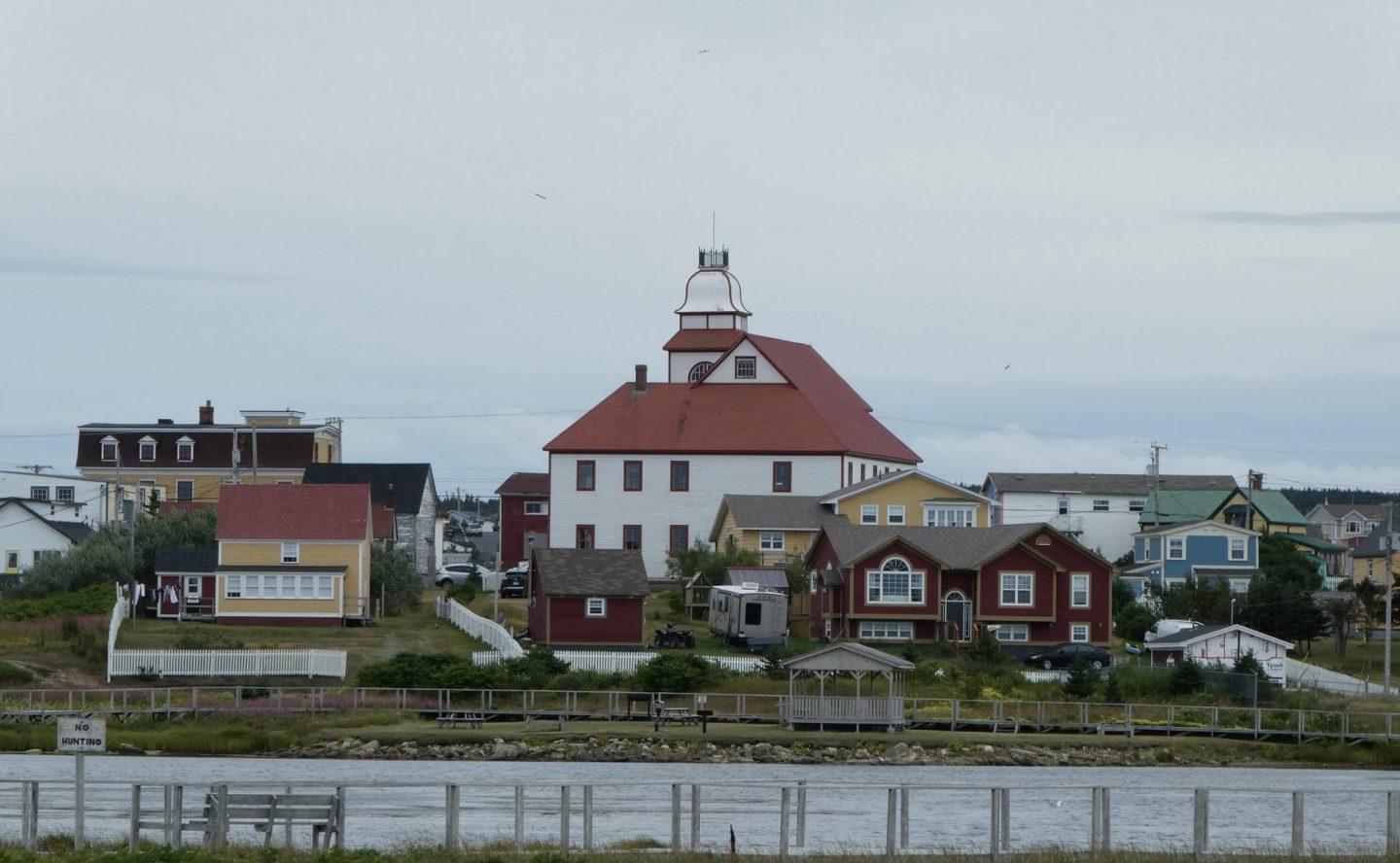 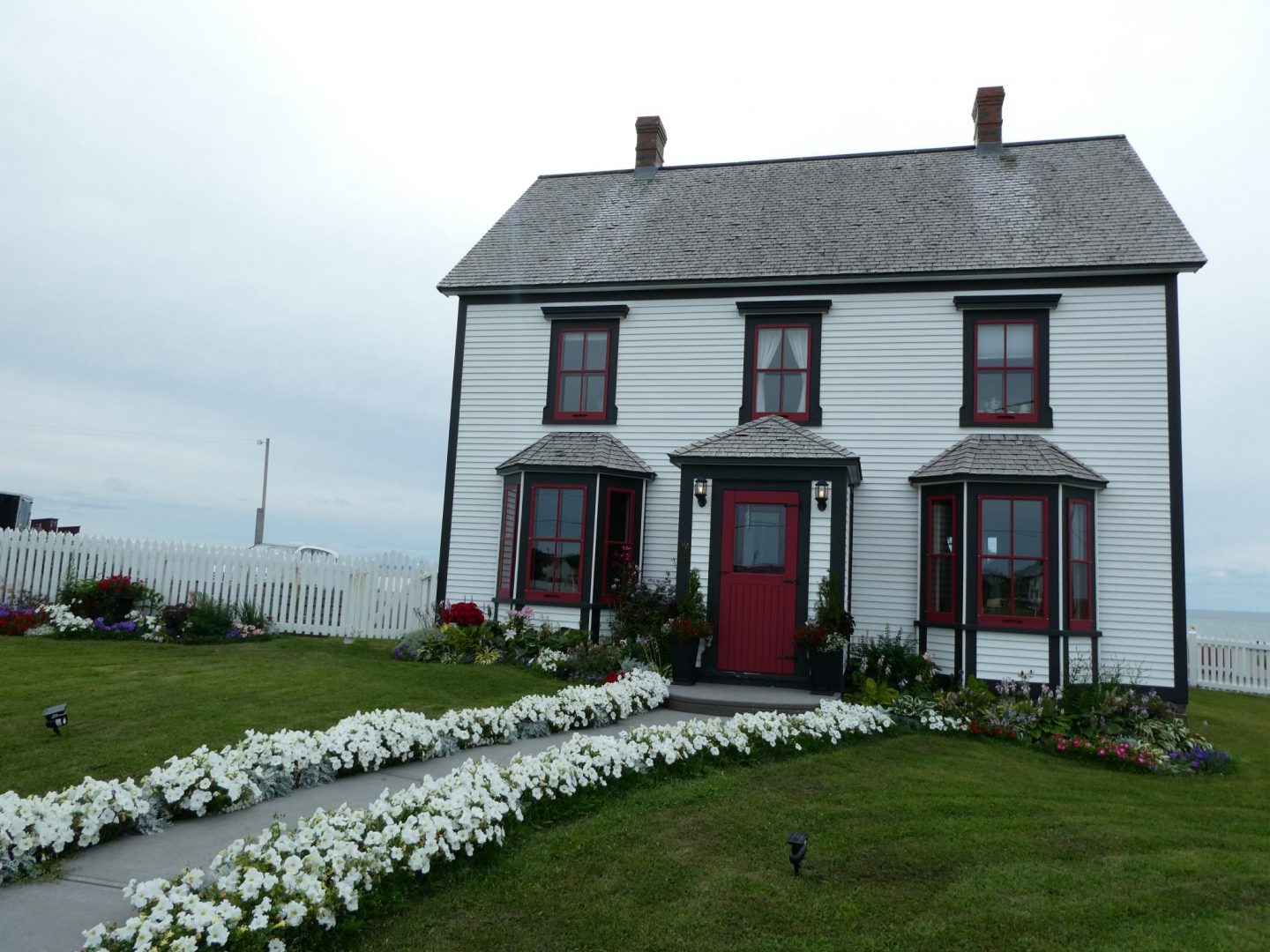 We had some delicious cod tongues here in a place that looked like it hadn’t changed its menu, decor or serving staff for about 50 years.

And stayed in an inn built in 1862 as a public house with rooms upstairs.  It had decayed almost to ruin before being meticulously restored a decade ago.  We suspect it’s probably now better than its original incarnation, which may or may not have included serving as a brothel. 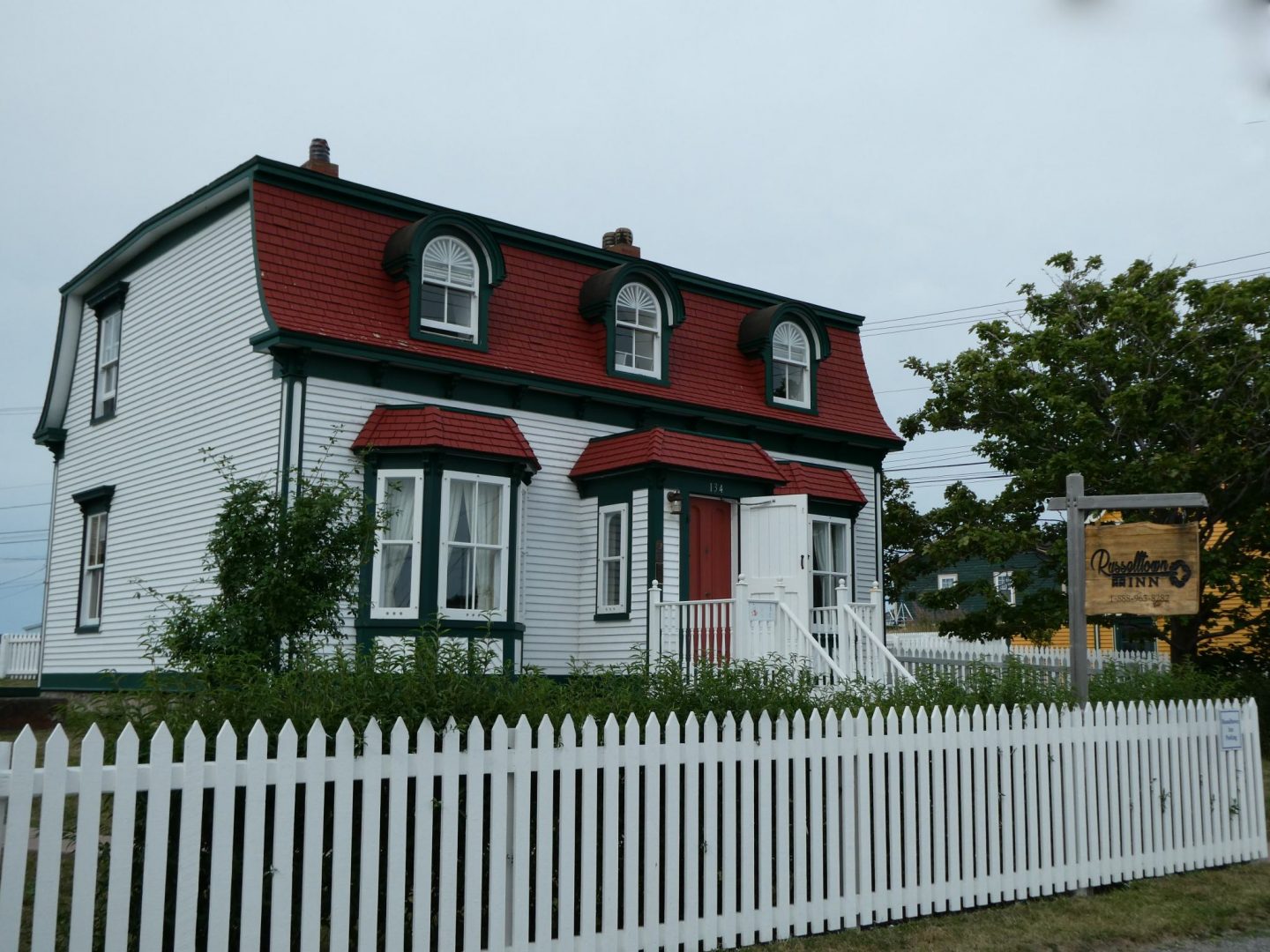 In the older part of town you can see some odd things – like this whale head skeleton wearing a pair of antlers. 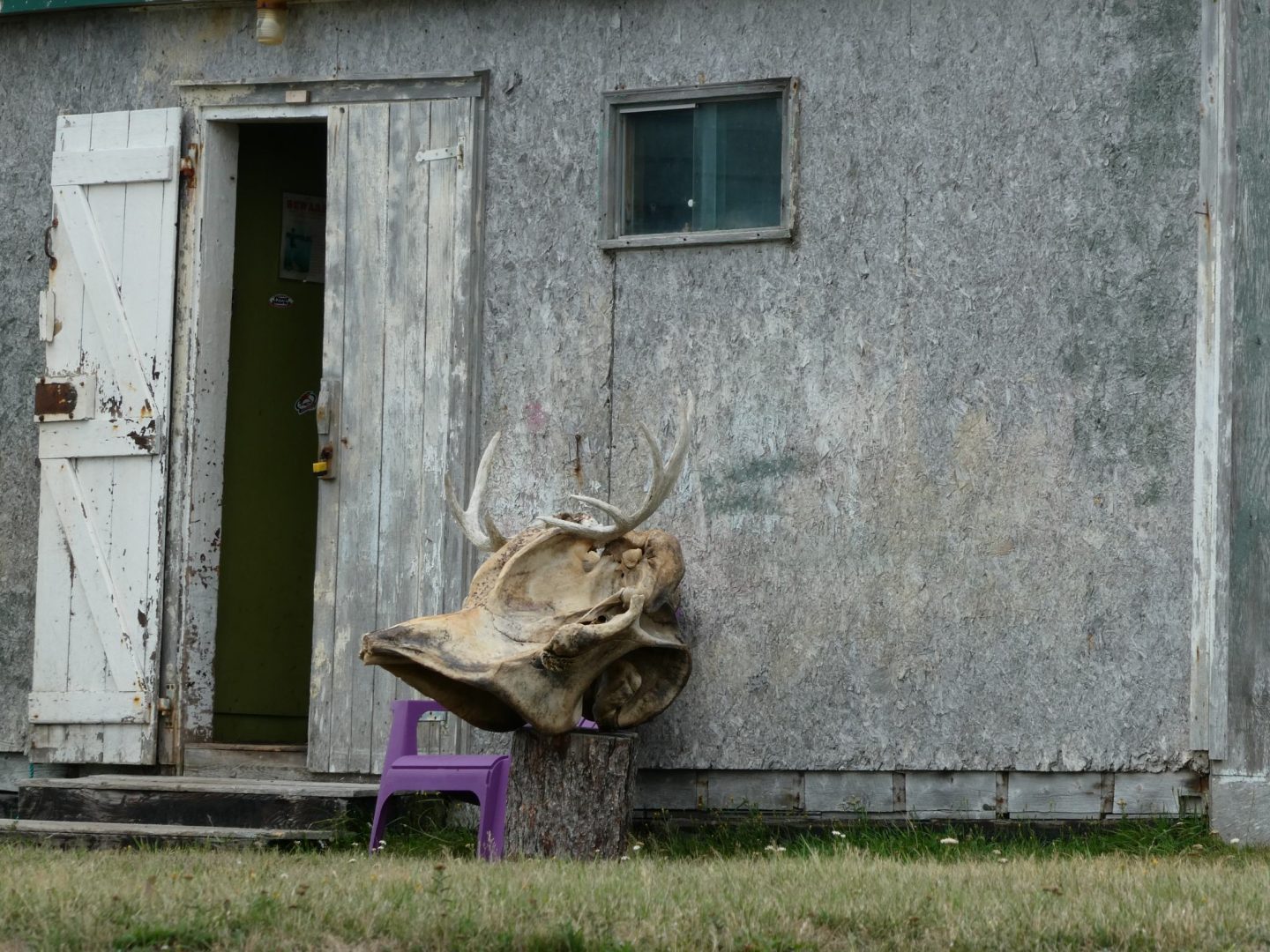 Bonavista is also a good base for things to do in the area.

The nearby town of Elliston markets itself as the Root Cellar Capital of the World.  We’re not sure there are too many other towns vying for the title, but the good citizens of Elliston are inordinately proud of it.

In the days before electricity, more than 130 root cellars were built into hills and mounds where the natural humidity kept the families’ stock of potatoes, carrots and turnips cool in the summer and stopped them freezing in winter.  More than half of them are still in use, including the oldest documented cellar, built in 1839.

They are easy to find.  Just drive or walk around the area and you’ll soon spot what look more like hobbit houses than larders. 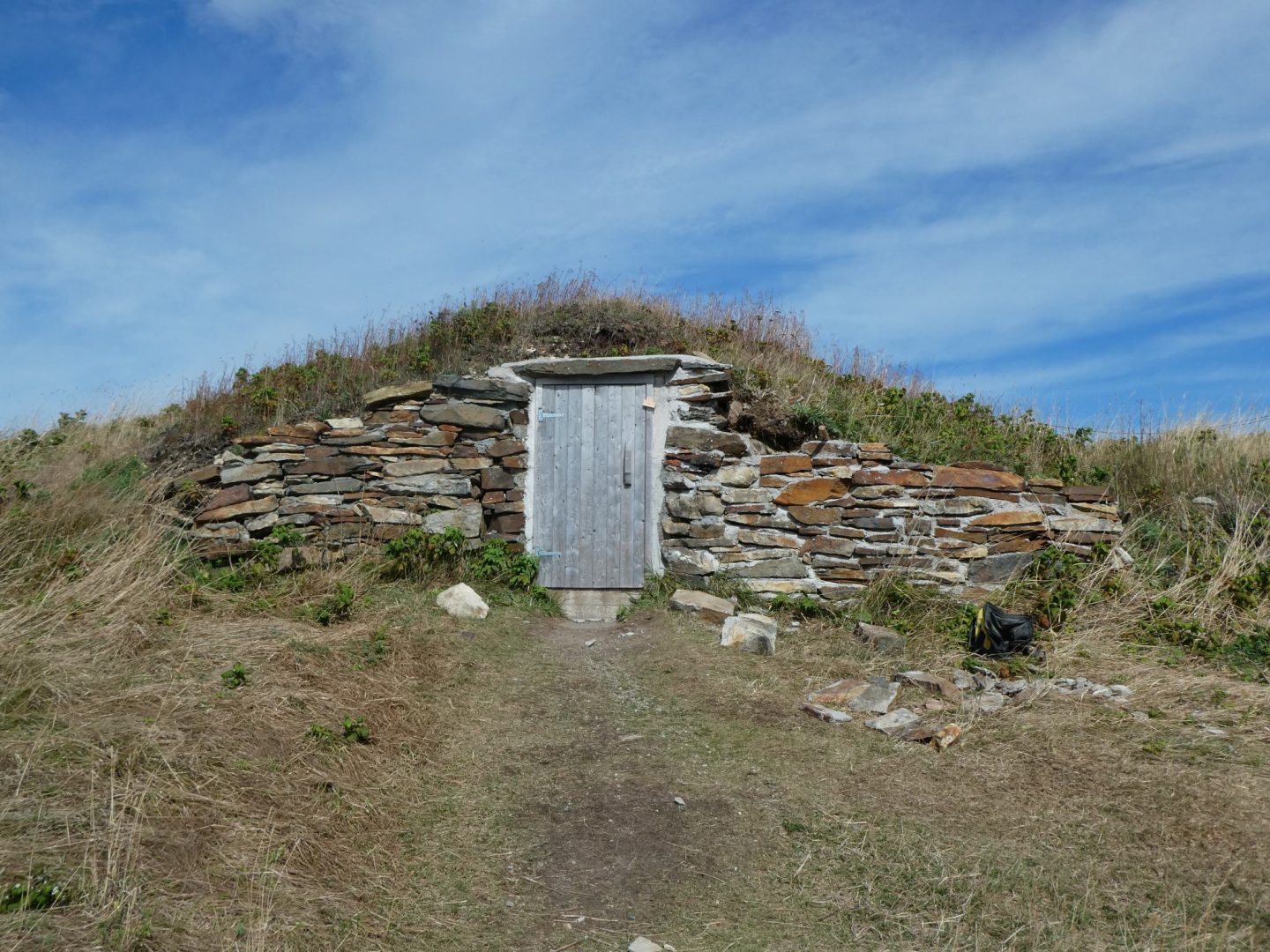 A better reason to visit Elliston is the Sealers Interpretation Centre dedicated to the history of sealing in Newfoundland.  It covers the harsh conditions and perils faced by sealers especially in the early years, as well as a thoughtful treatment of broader issues including the economics of the sealing industry, it’s environmental impact and its significance to local culture.

The Centre also manages a memorial at nearby Porters Point dedicated to the men lost in what is known here as the 1914 sealing disaster.

In March 1914 the captain of the SS Newfoundland sent his crew out sealing despite incoming cloud and having no barometer to detect temperature change which would signal an oncoming storm.  They were sent across the ice in the direction of another boat captained by his father.  He later said he believed if conditions worsened they would be taken onto his father’s ship.  Instead, when the sealers reached that vessel his father fed them and, although it was snowing heavily, ordered them to kill 1,500 seals and return to their own ship.  He sailed away to collect his crew who were sealing at another site.

When conditions deteriorated even further, each captain thought the men were on the other ship.  The captains had no way of communicating because the owners of the SS Newfoundland had removed the ship’s wireless communications systems as ‘an expense that didn’t contribute to profits’.  132 crew were stranded on the ice for two days in freezing rain and a snowstorm.  By the time their captain realised they were still out on the ice and ships came to retrieve them, 78 had died.  Many of the survivors lost one or more limbs to frostbite.

In the same storm, the SS Southern Cross with a crew of 173 sank with the loss of all hands. The cause is unknown but however the ship came to be in trouble, there was no chance of rescue for anyone on board because it, too, had no wireless communication system.

On an island of just 250,000 people, the loss of 251 in a single storm was devastating.  It triggered widespread public outrage and a commission of inquiry whose recommendations led to legislation prohibiting sealers being on the ice after dark and requiring all sealing ships to have wireless communication and flares.

At Porters Point is a bronze statue of Reuban and Albert Crewe, father and son sealers from the SS Newfoundland who died together on the ice, and a memorial naming each of those who died in the twin disasters. 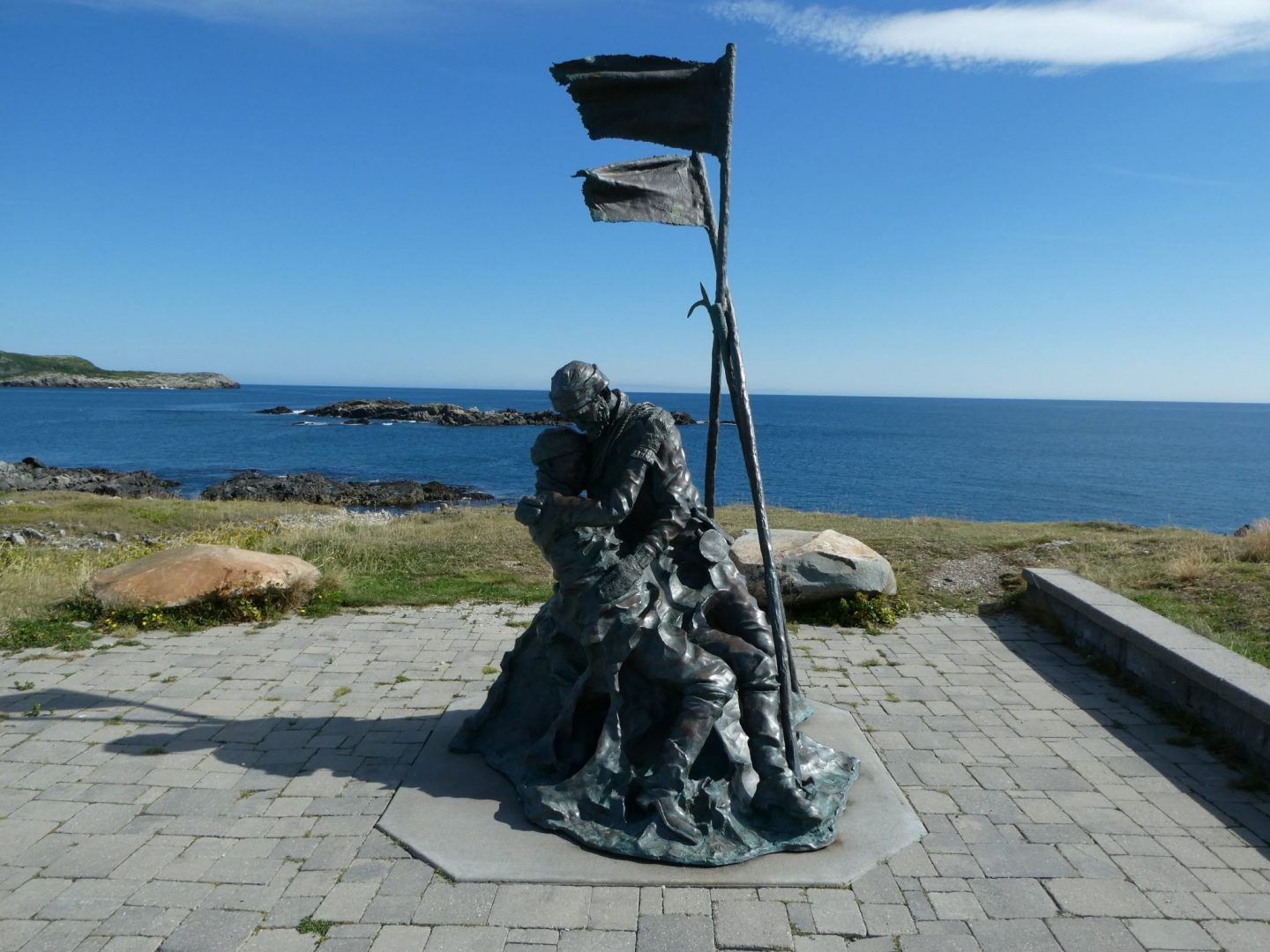 More uplifting and surely the best reason of all to visit Elliston is the puffin colony on a promontory at nearby Sandy Cove.  Yes, we’ve seen puffins before, but Julie will never pass up an opportunity to watch these comical little birds. 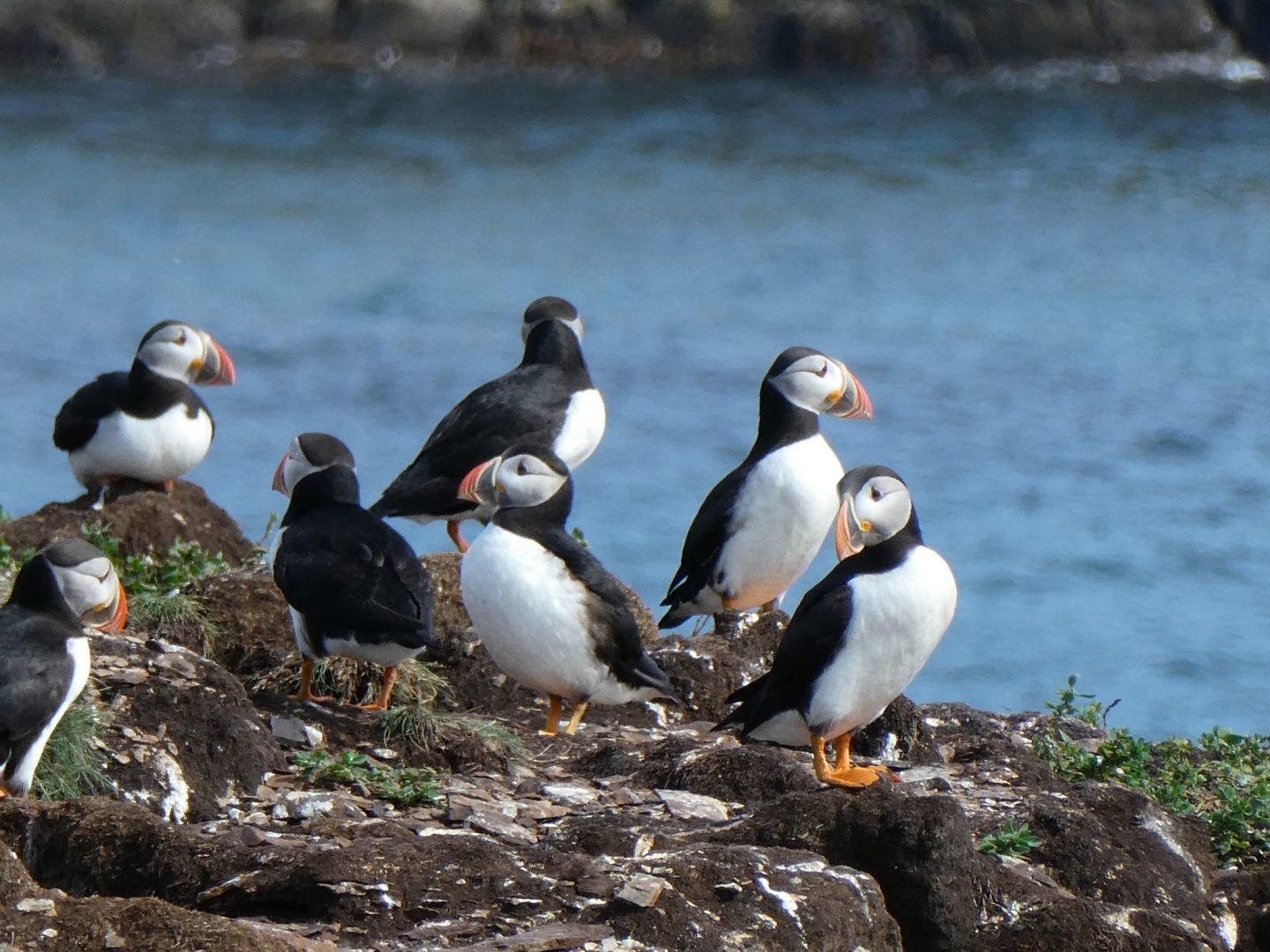 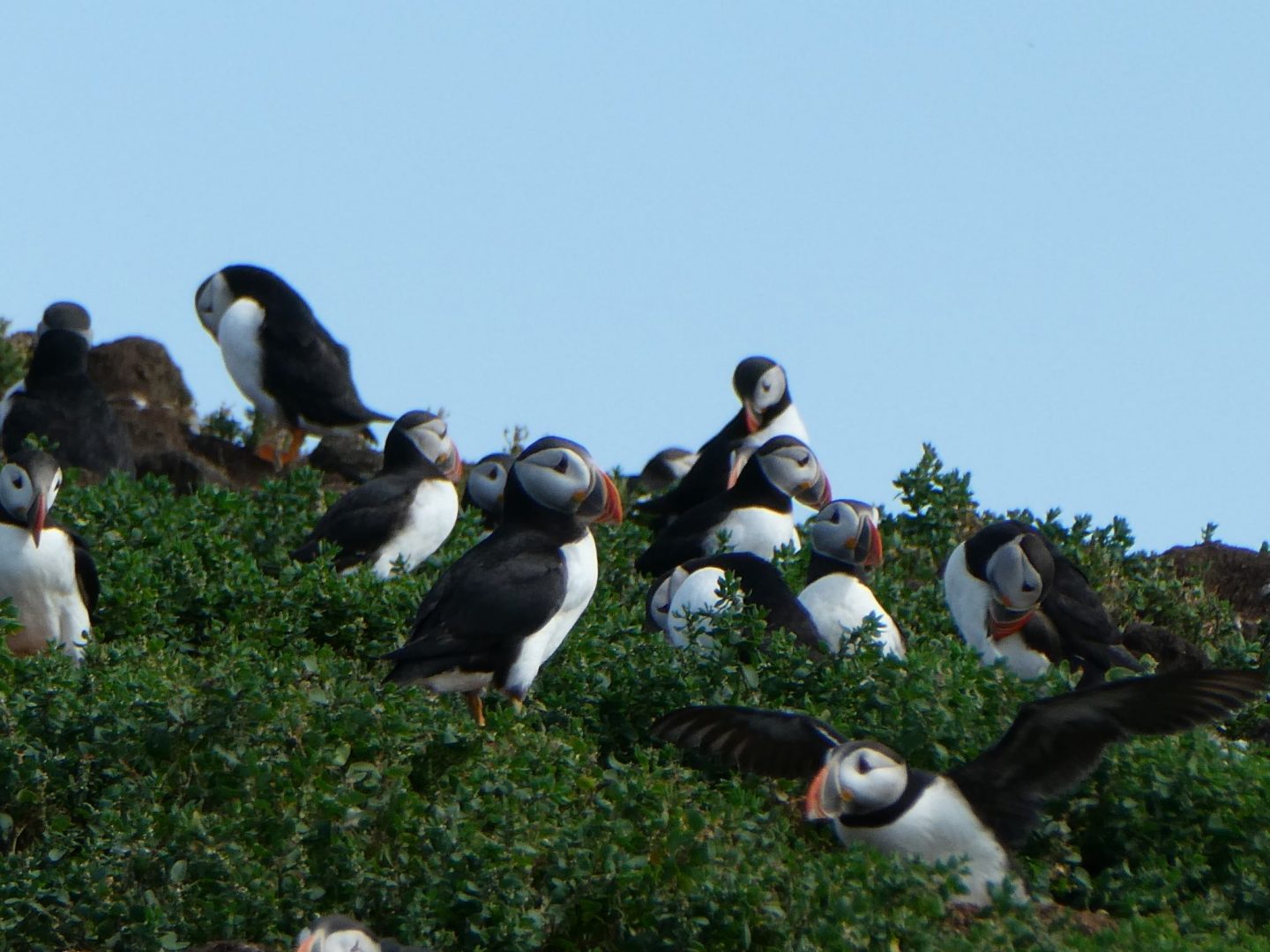 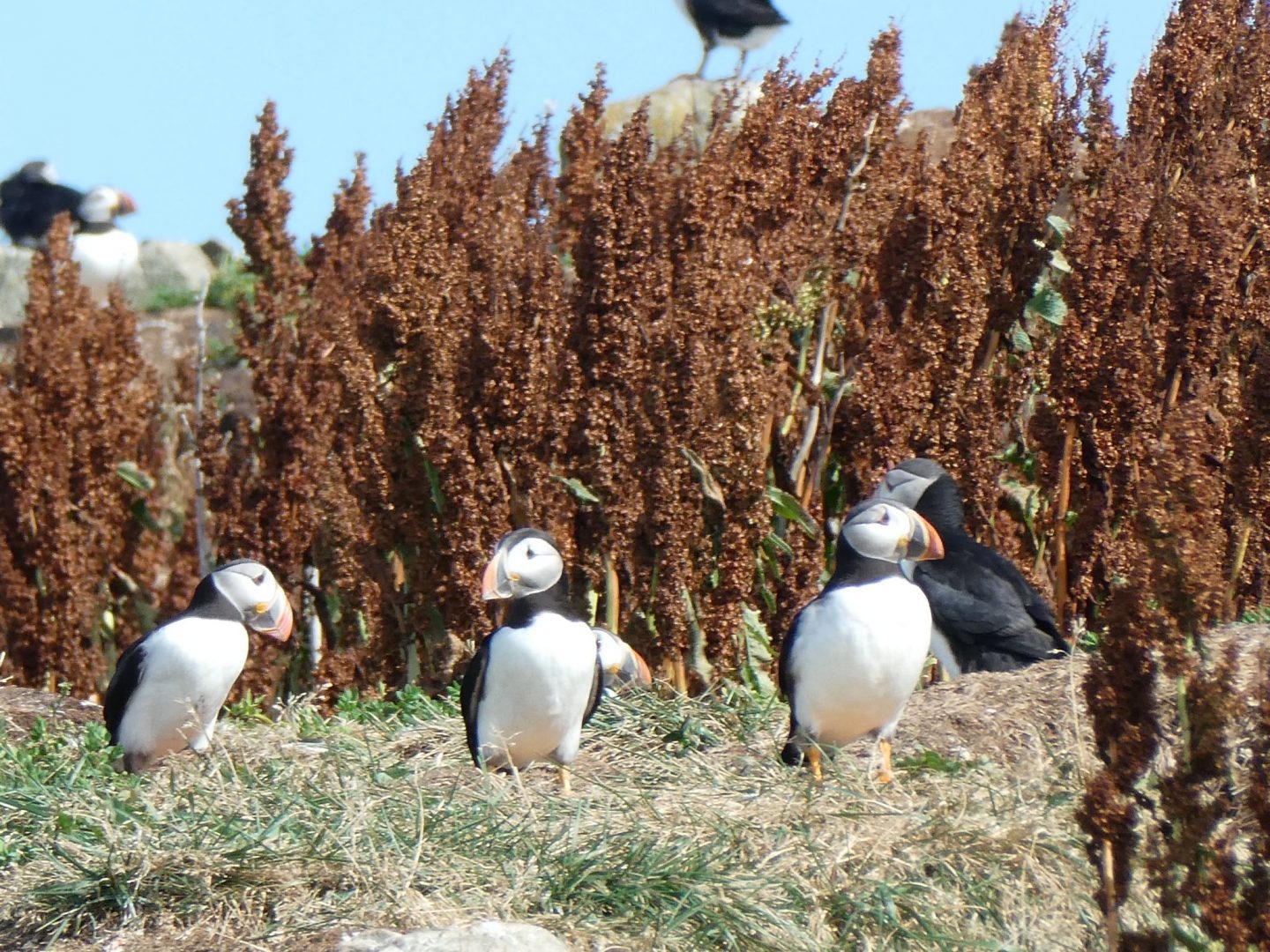 Back in Elliston there’s a giant puffin love seat by the bay. 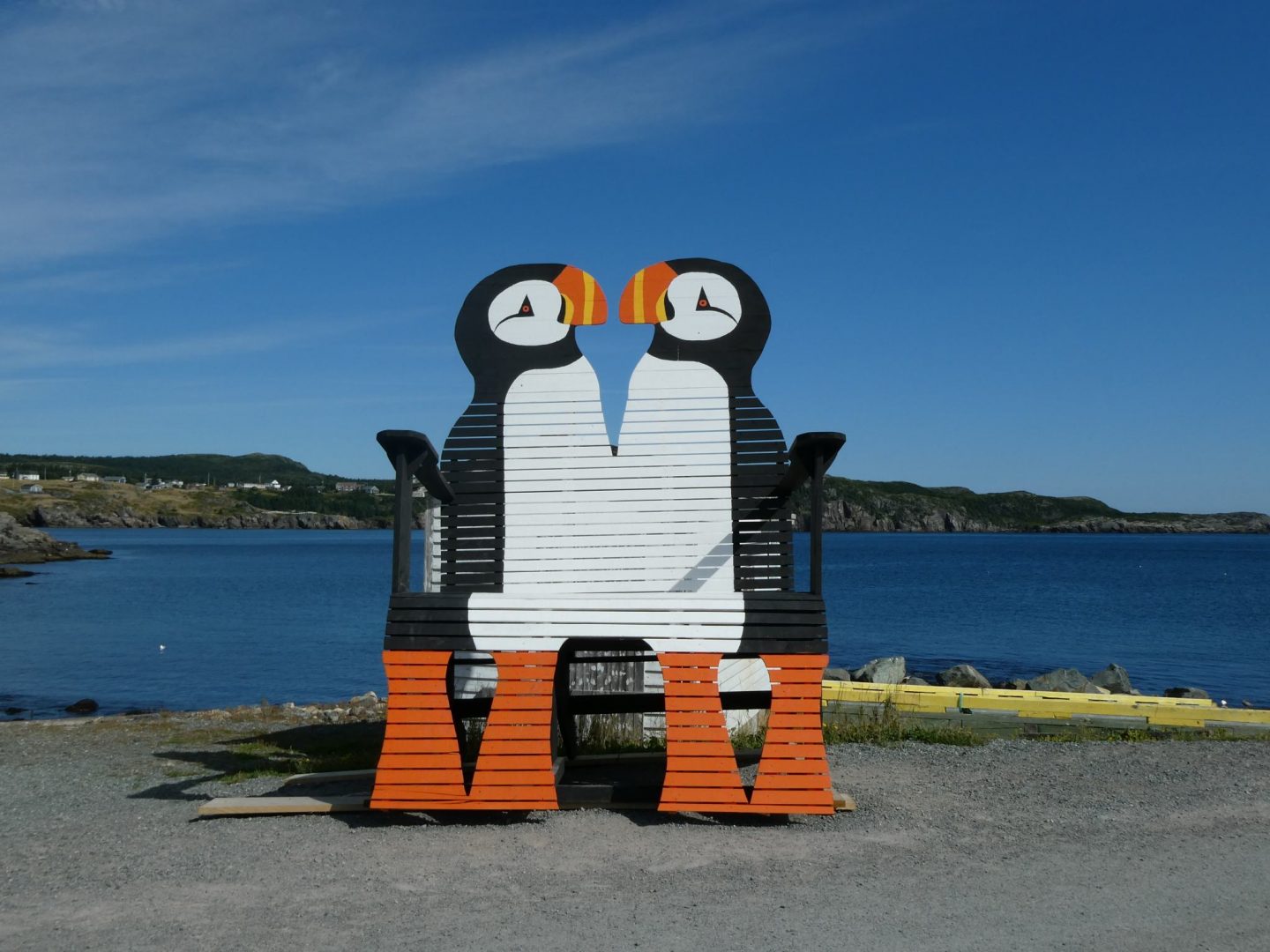 Cars have puffin number plates and you can buy every manner of puffin-related souvenirs from key rings to stuffed toys, plates and mugs, and your very own outdoor chair.  Guess they realised puffins are more attractive than root vegetables. 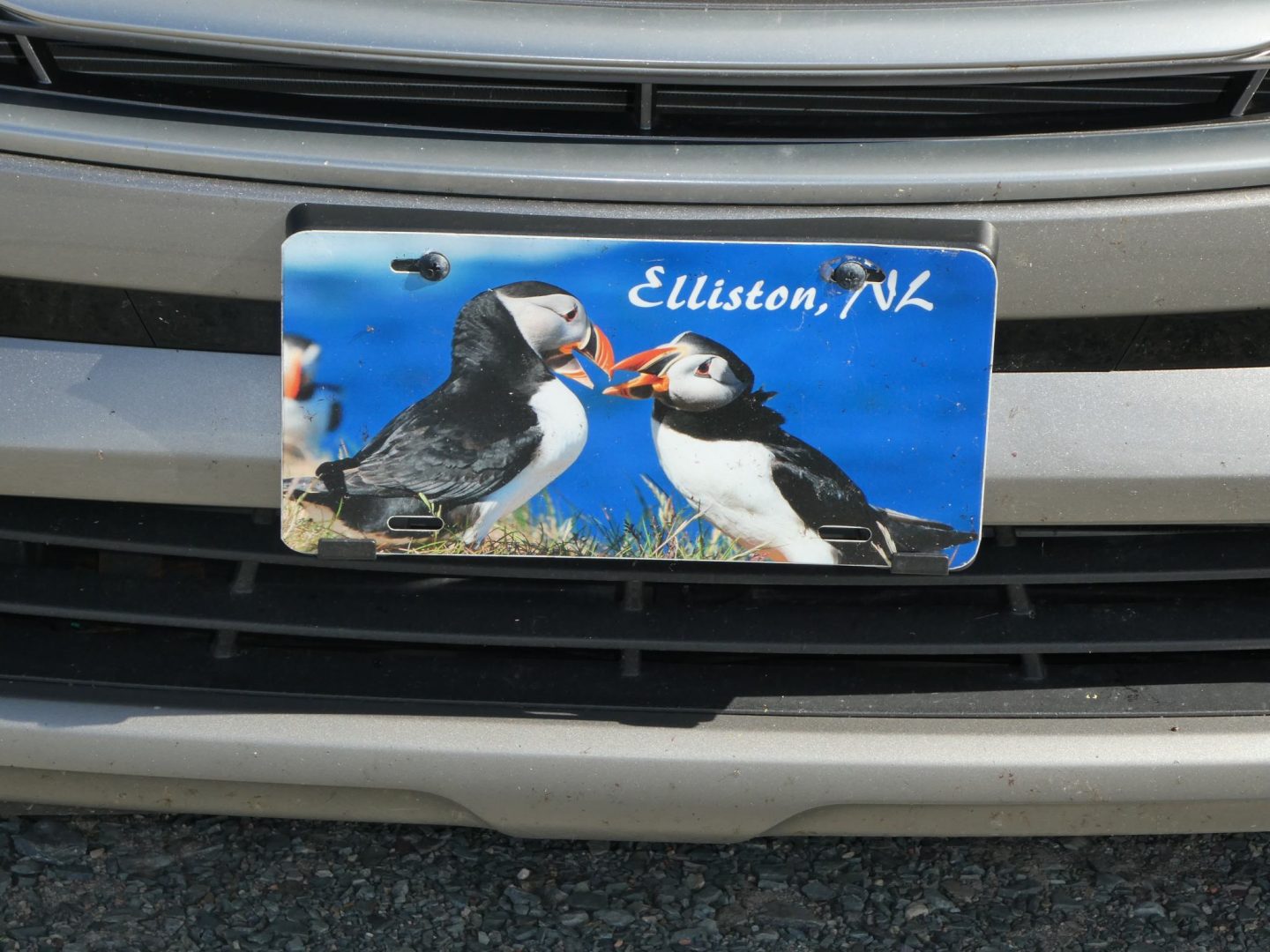 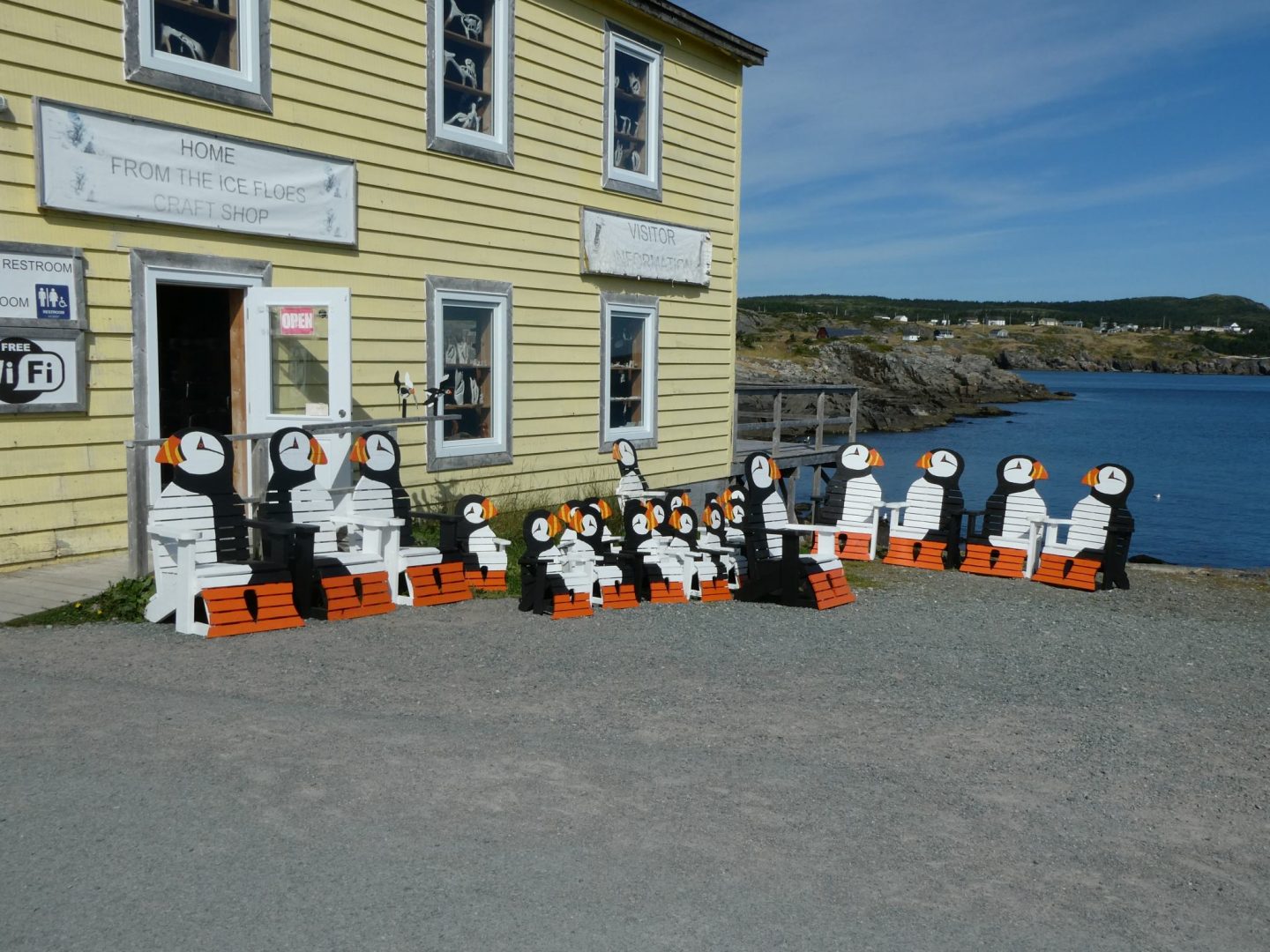 And north of Bonavista we parked at the Dungeon, a collapsed sea cave on the peninsula. 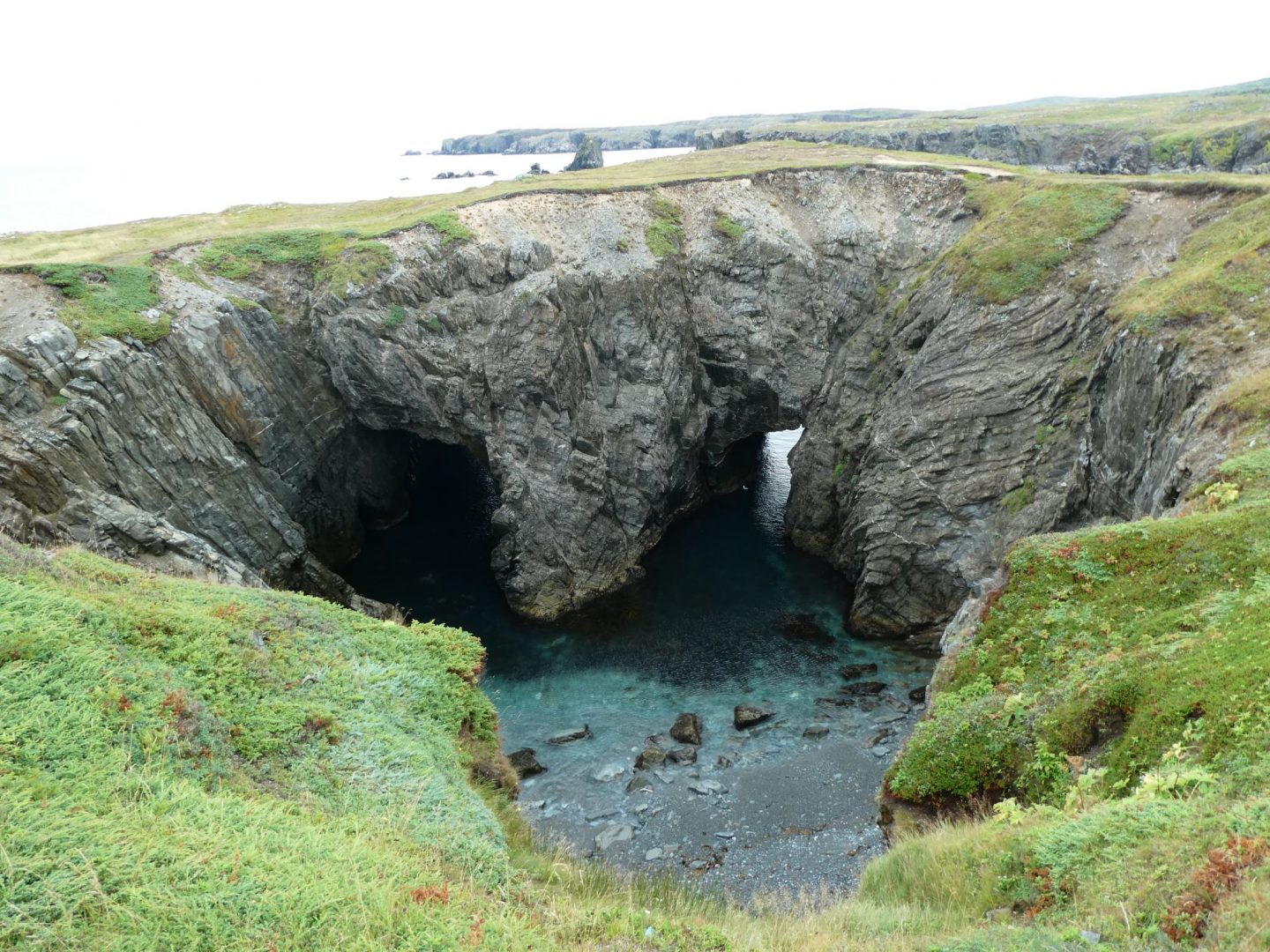 From there we hiked up the western side of the peninsula to Cape Bonavista lighthouse.  The fourth oldest lighthouse in Newfoundland was constructed between 1841 and 1843, and originally ran on seal oil.  The lighthouse operated until 1962 and is now a museum reflecting the life of the lighthouse keeper in 1870. 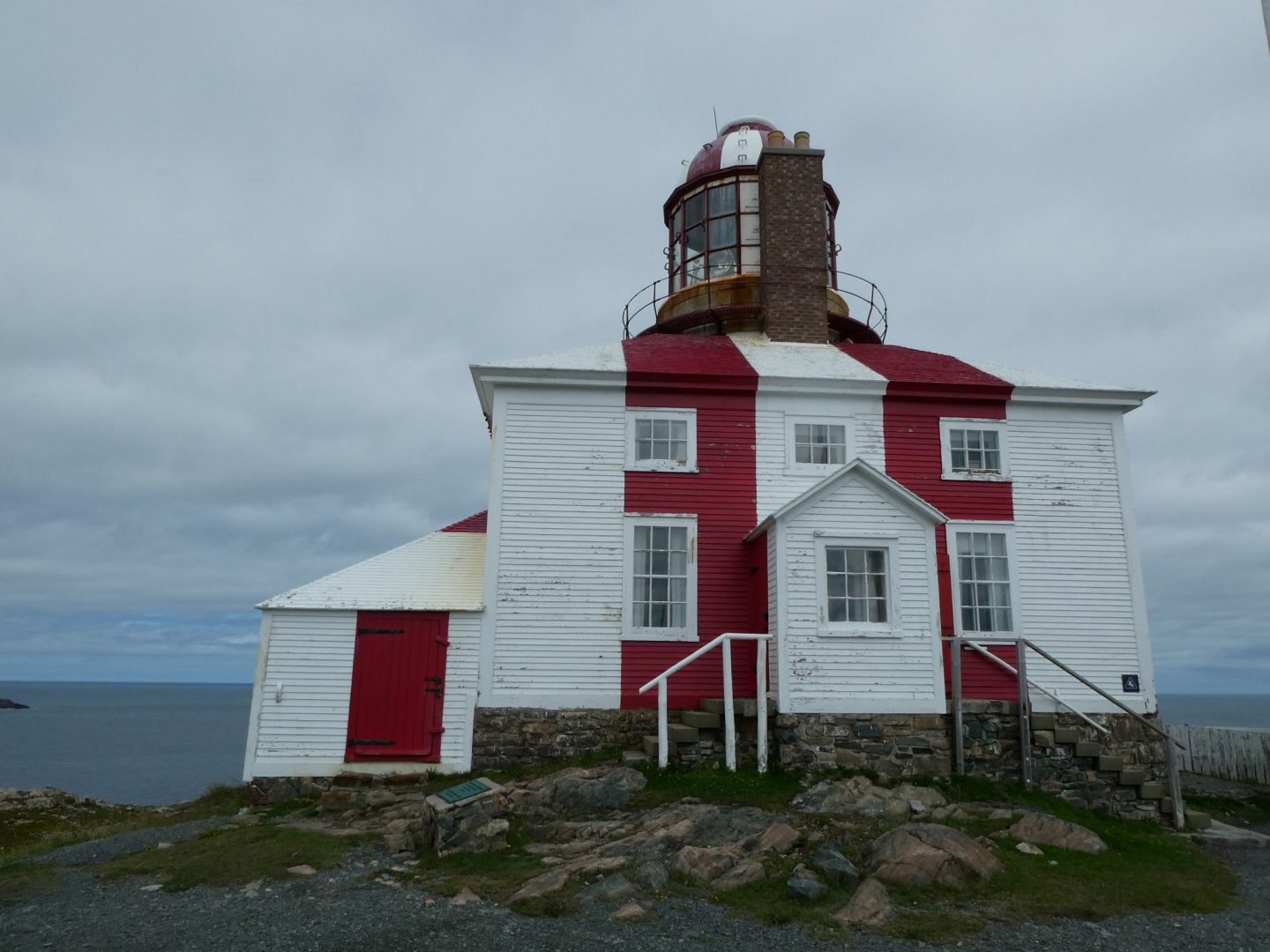 And look.  On an island separated  from the tip of the peninsula by a narrow channel – more puffins! 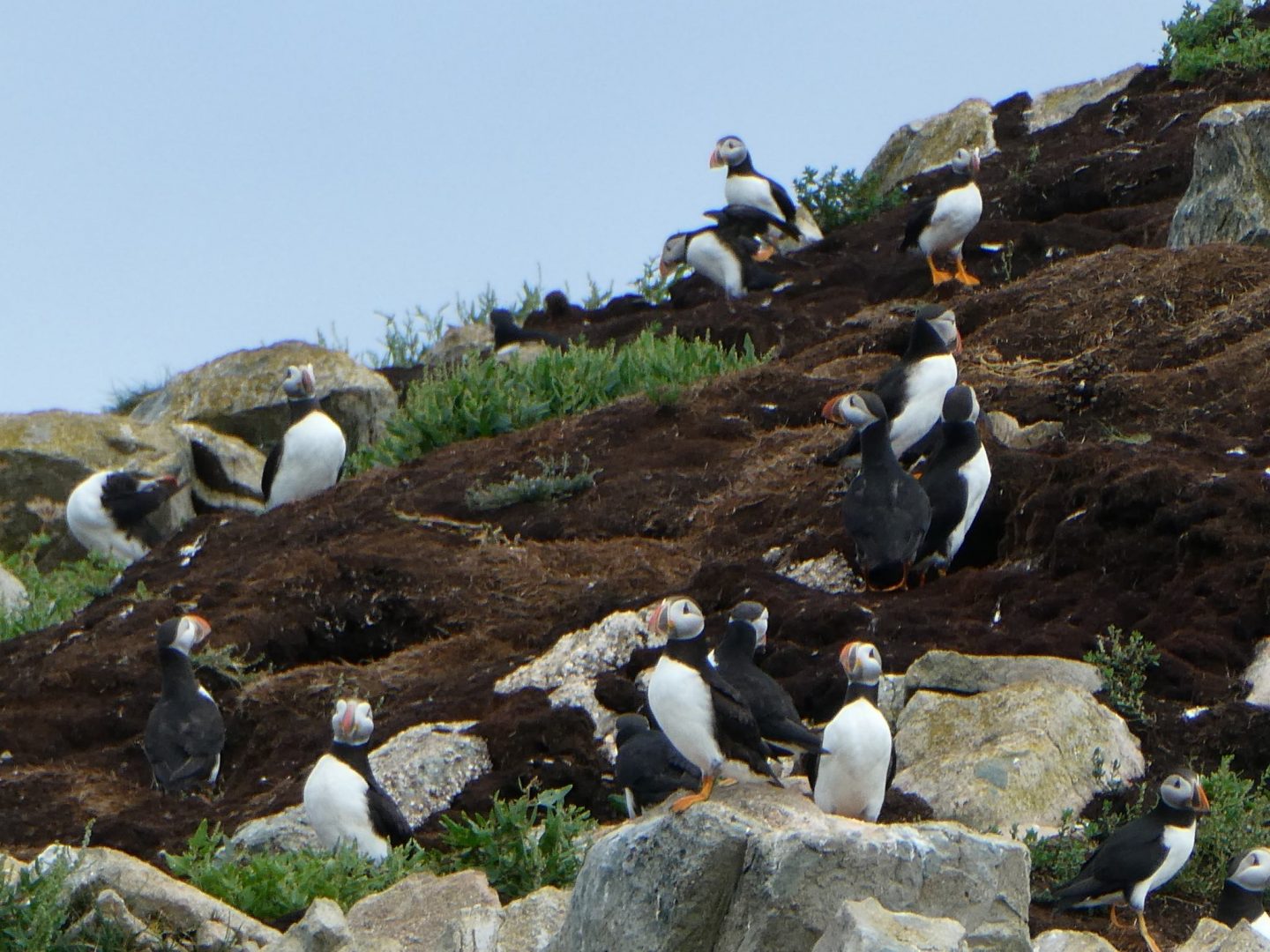 We hiked back via the Cape Shore Trail.  More sea stacks, cliffs and a calm sea. 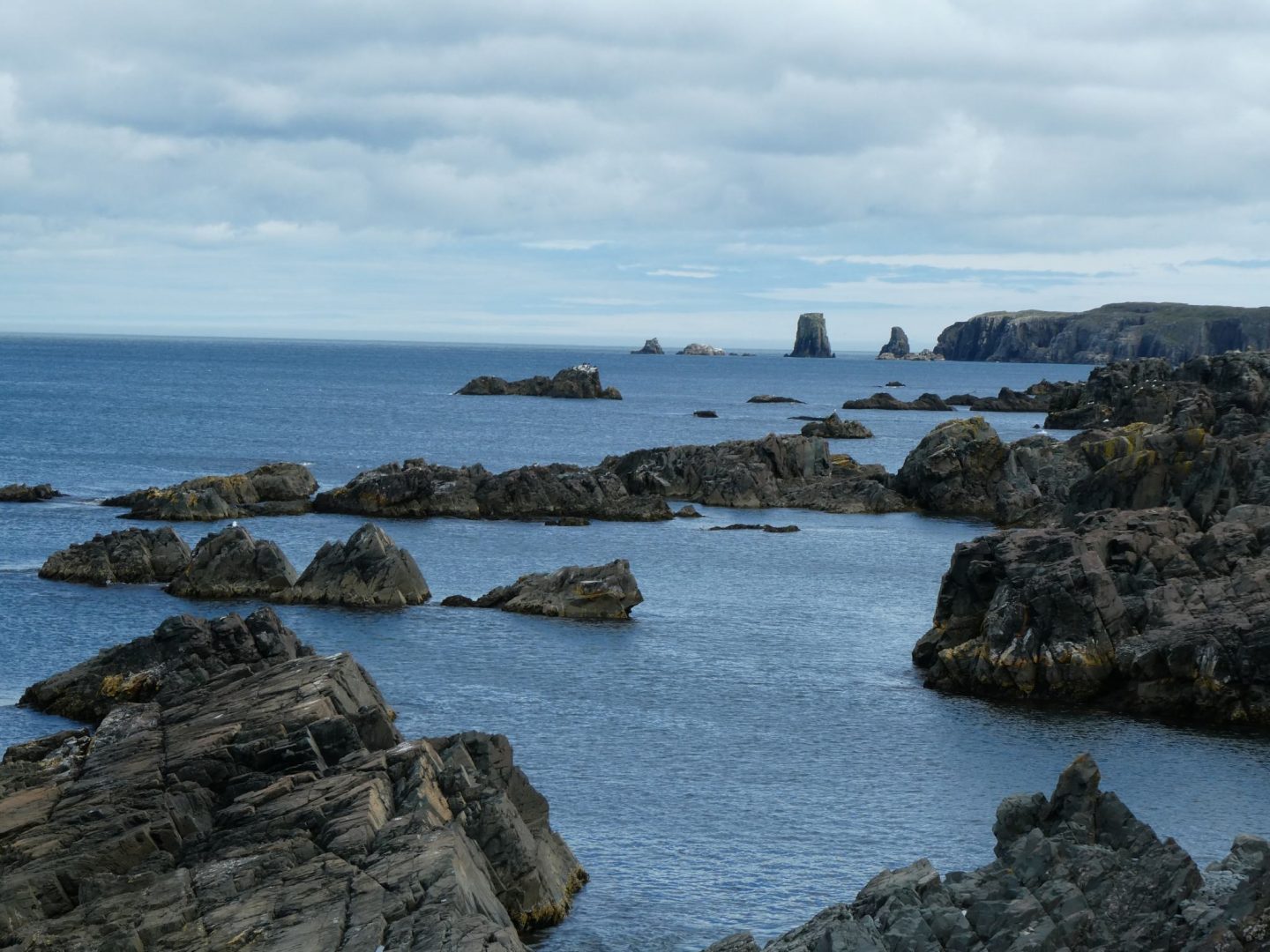 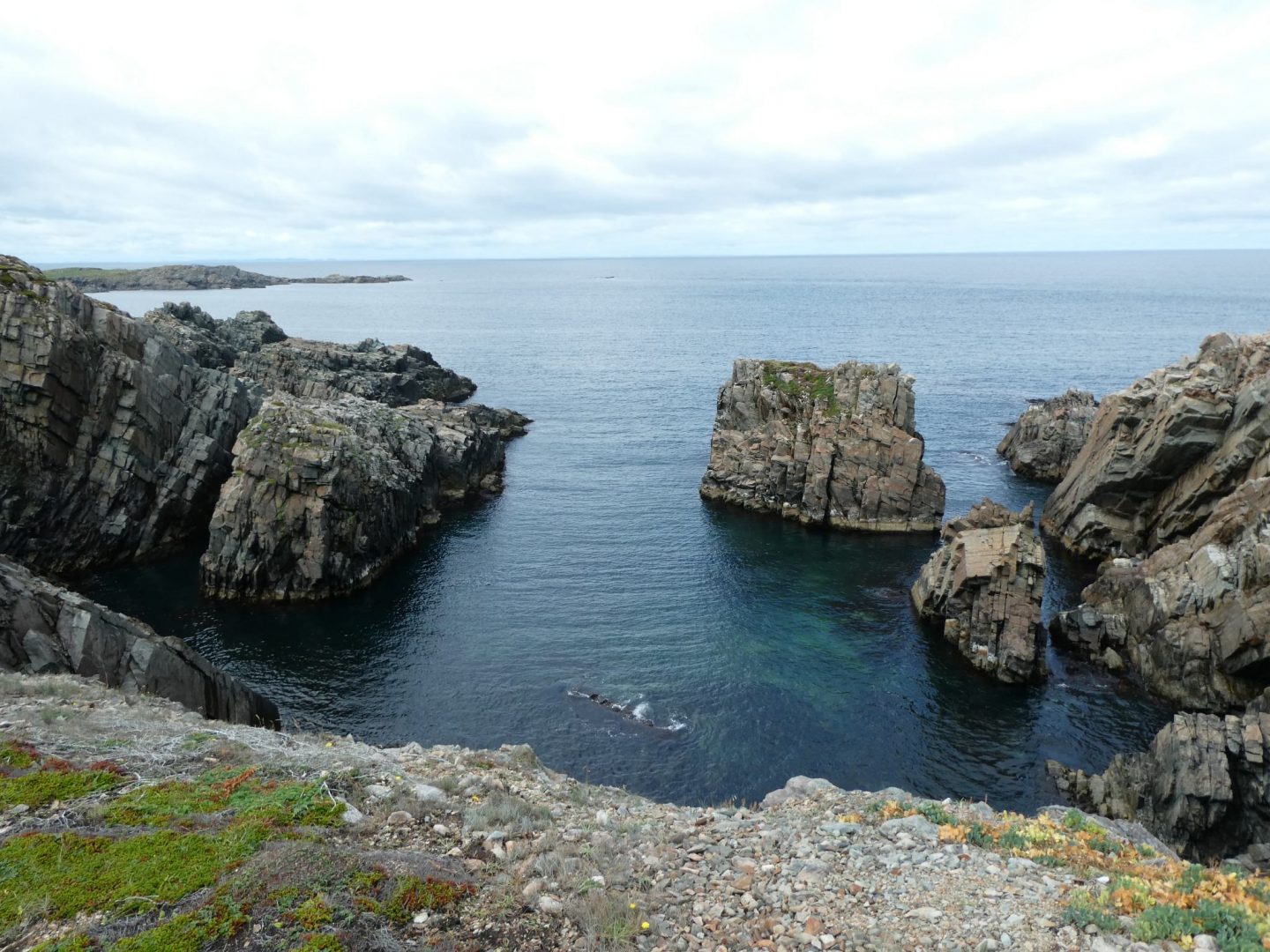 Along the way is a memorial to John Cabot.  Born in Venice, his real name was Giovanni Caboto but in keeping with common practice of the day, he anglicised it for the purposes of voyages carried out under English commission.  In 1497, holding letters patent from King Henry VII of England, Cabot sailed from Bristol across the Atlantic looking for a western passage to Asia.  Instead he stumbled upon Newfoundland and spent some months exploring the east coast of what would later become Canada.  It is the earliest known European exploration of coastal North America since the Norse visited in the 11th century.

Exactly where Cabot first made landfall is uncertain, but the majority of historians now accept it was on Cape Bonavista. 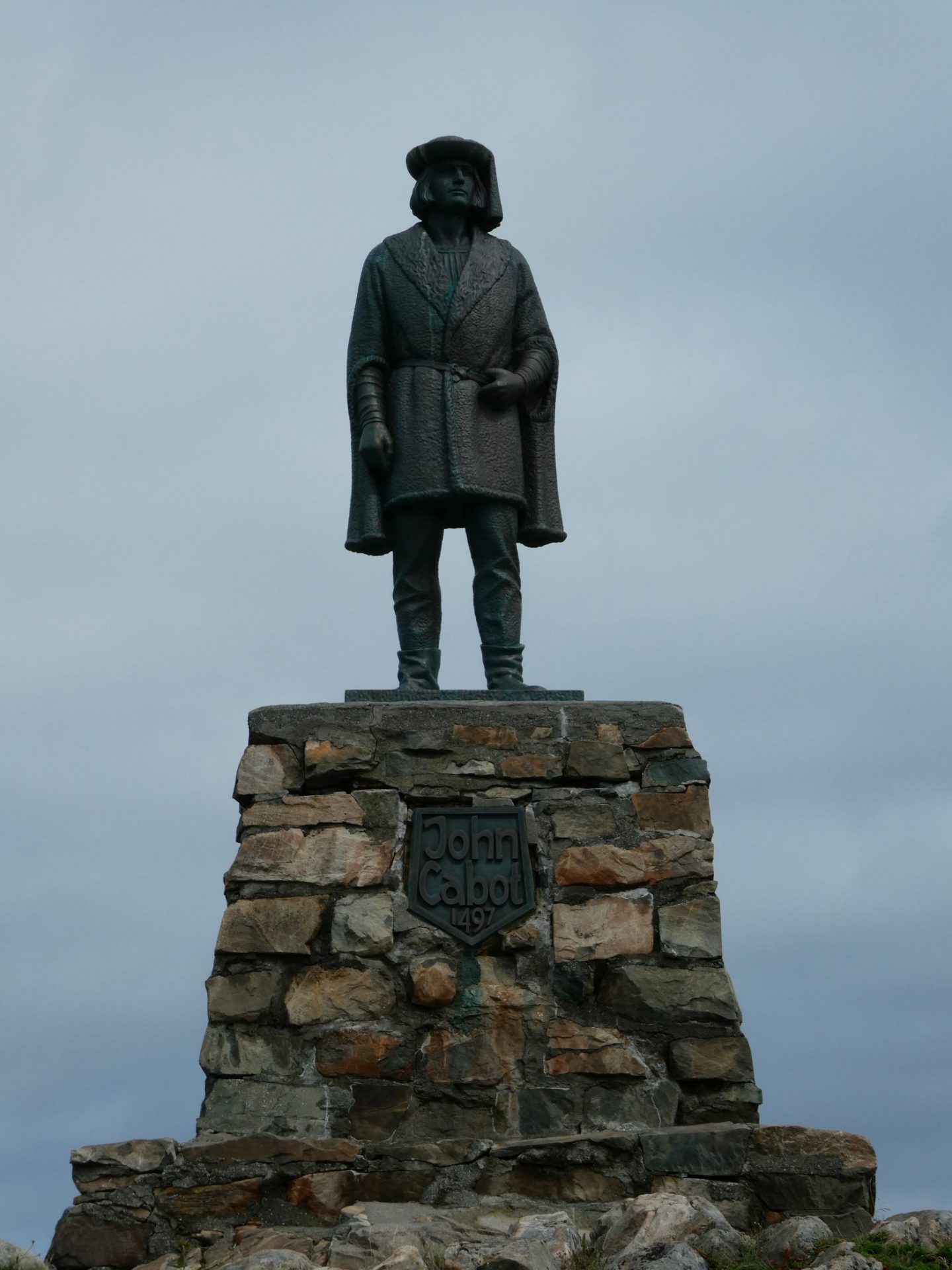 On Cabot’s return to England he claimed that “the schools of codfish were so thick you [could] walk on their backs”.  And that’s where it all began for European interest in Newfoundland.

Cabot’s first stop in North America was basically our last.  Back to St John’s and a flight to Iceland.