The first permanent settler to Iceland, Ingolfur Arnarson, arrived from Norway in 874 CE after becoming involved in a blood feud back home.  There is no evidence of the island ever having an indigenous population and no confirmed previous habitation.  If that’s right, Arnarson’s arrival makes Iceland the second-last major land mass in the world to be settled – New Zealand’s settlement by Māori being the most recent.

In Viking-era Scandinavia, the head of the household had a seat fitted with two wooden poles called high seat pillars.  According to legend, Arnarson chose Reykjavik as the location of his settlement using the traditional manner – when he sighted land, he threw his high seat pillars into the sea and vowed to settle wherever the gods brought them ashore.  One minor problem.  The pillars sailed off in the current and two of his slaves spent three years scouring the coast before they were found.  Not the most efficient system for deciding where to live, we think.

The name Reykjavik is derived from Old Norse words for ‘smoke’ and ‘bay’, and is believed to refer to the steam rising from hot springs in the area.  Perhaps he really chose the site because he wanted a warm bath.  In this climate, that’s what we would have done.

At almost 66 degrees north, Reykjavik is the world’s northernmost capital city.  With 133,000 residents, it’s almost one third of the country’s entire population.  Urban centres are small and sparse once you leave.

Reykjavik’s best known landmark is Hallgrimskirkja, the 74.5 metre tall Lutheran church completed in 1986 and completely out of character with the rest of the city architecture.  It is the city’s tallest building and one of the tallest in the country. 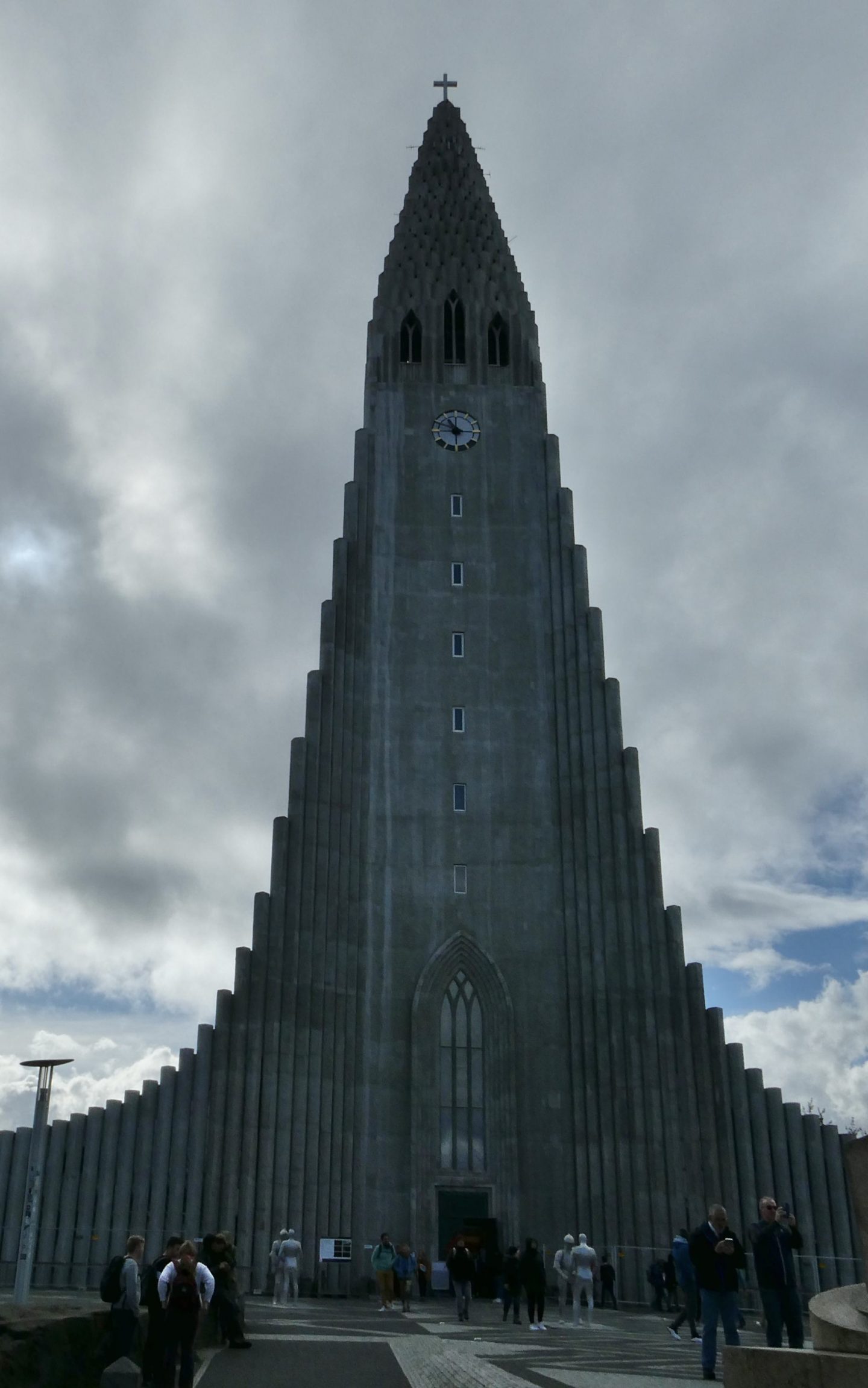 You can see it from just about anywhere because most of the rest of the centre is quite low rise. 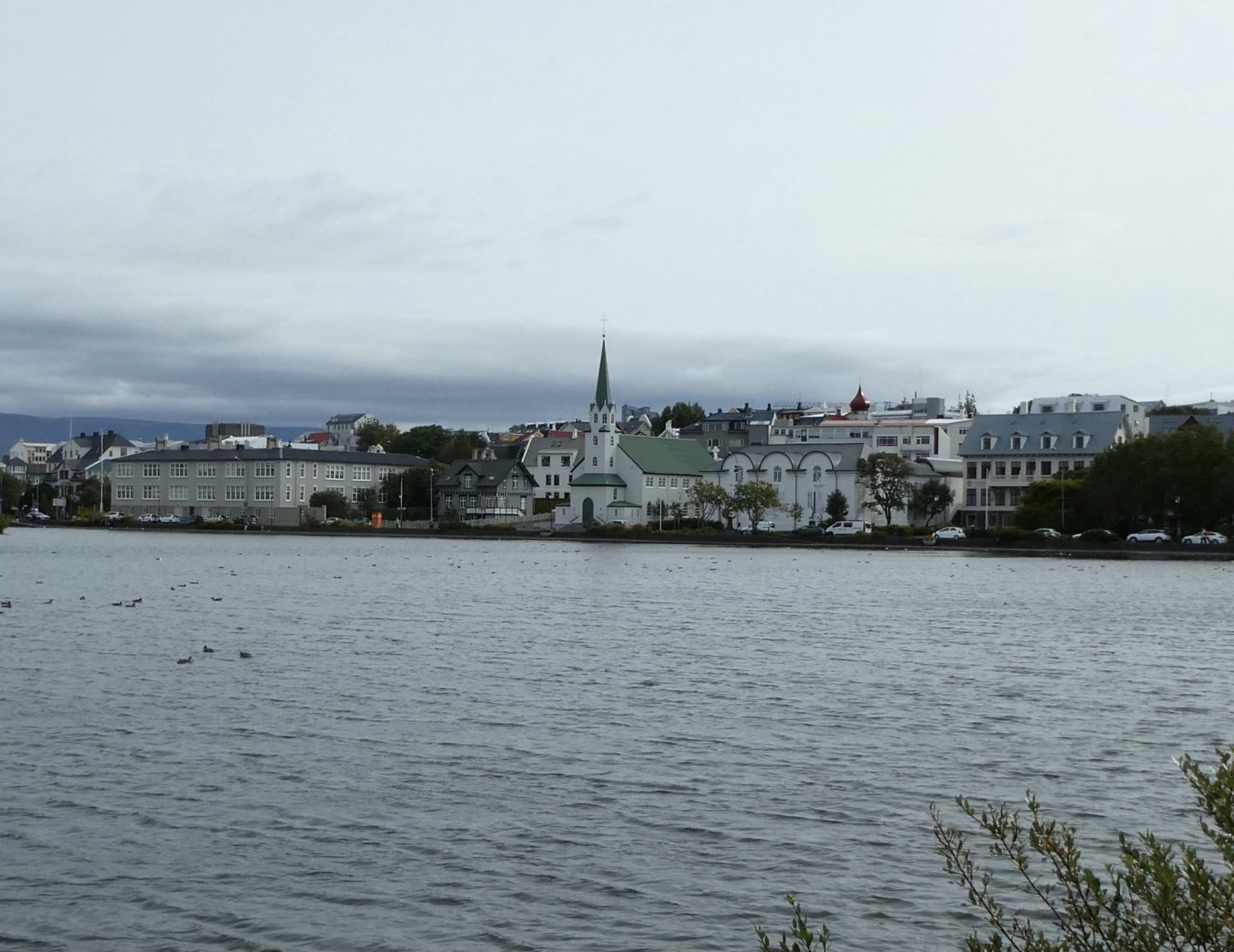 Outside the church is a monument to Leif Erikson.  Apart from Bjork, he’s probably Iceland’s most famous person.  Leif’s father, Eric the Red came to Iceland aged 10 with his father who had been exiled from Norway for manslaughter.  Eric grew up and had a bunch of children before himself being booted out of Iceland for murder.  A family tradition it seems.  He left the children behind and went on to kick off the settlement of Greenland.   So it’s generally accepted that Leif was born and grew up in Iceland, although he’s variously claimed by Norway, Denmark and Iceland as ‘one of theirs’.

According to the Icelandic Sagas, Leif was blown off course sailing from Norway to Greenland and landed on the northern coast of what is now Newfoundland.  If that’s right, it makes him the first European to set foot on continental North America, 500 years before Columbus in the Bahamas and John Cabot in Newfoundland. 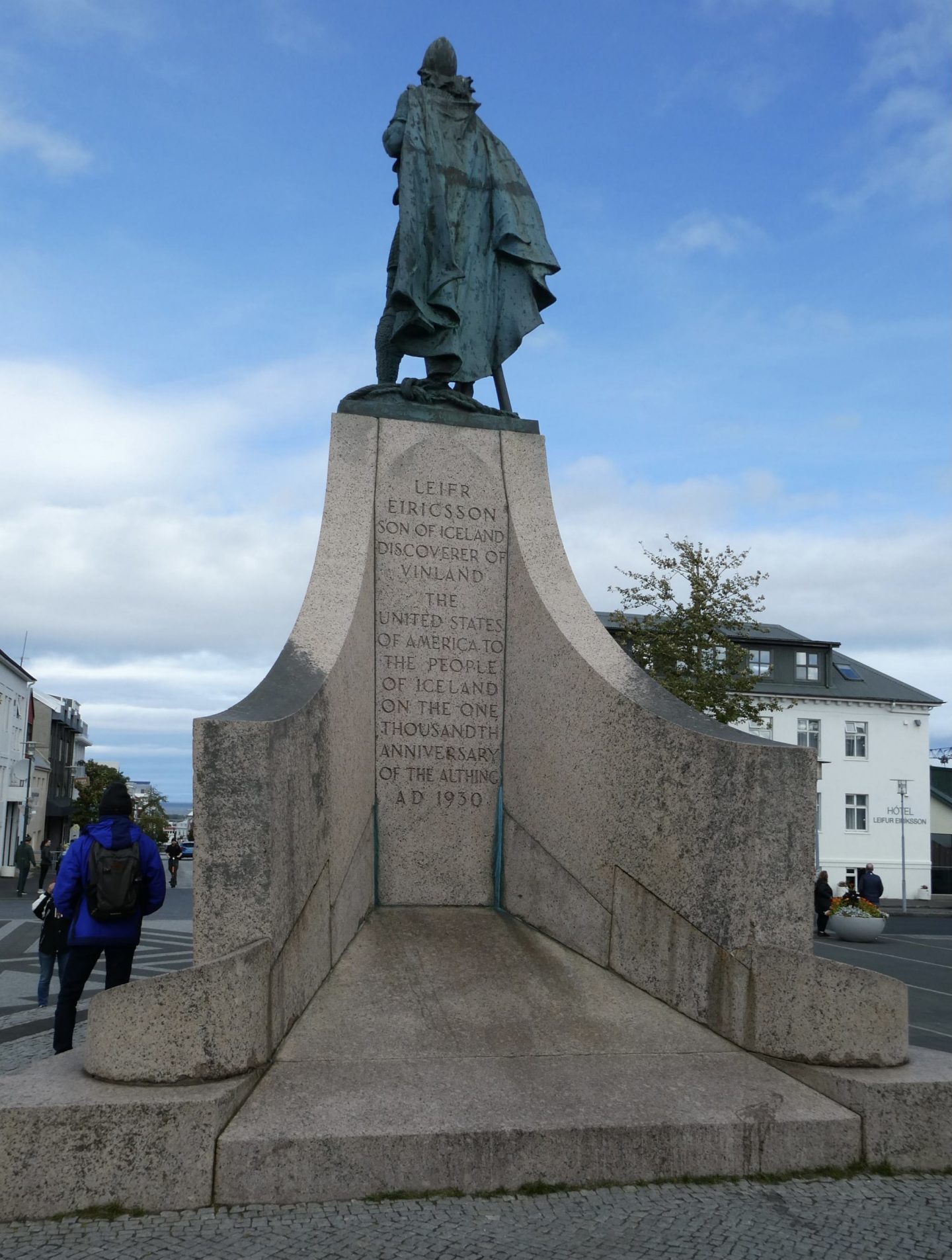 The oldest building in town was built in 1762 when Reykjavik was just becoming a village.  It’s now operated by the City Museum as an exhibition space. 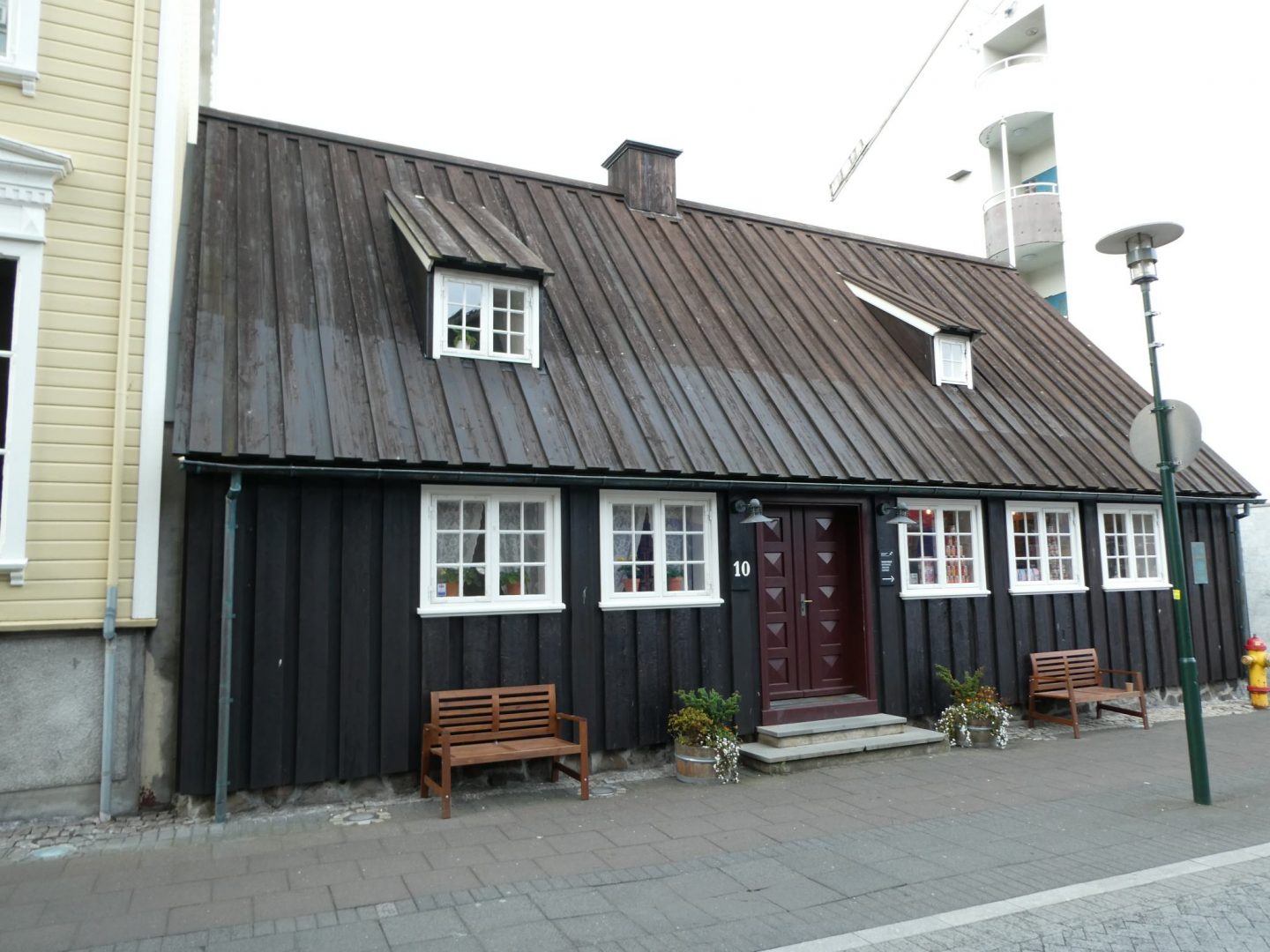 At the other end of the scale is Harpa.  An ambitious plan to redevelop Reyjkavik’s waterfront to include a 400 room hotel, concert hall, conference centre, residential apartments and restaurants came to a screeching halt when the 2008 financial crisis hit. Although the economy has rebounded, the project has not, with the exception of the concert hall.

Harpa is intended to evoke the basalt columns which you see in some lava landscapes in the countryside.  More on those in a post to come.  Even not knowing that reference, though, the building is stunning in its design and execution. 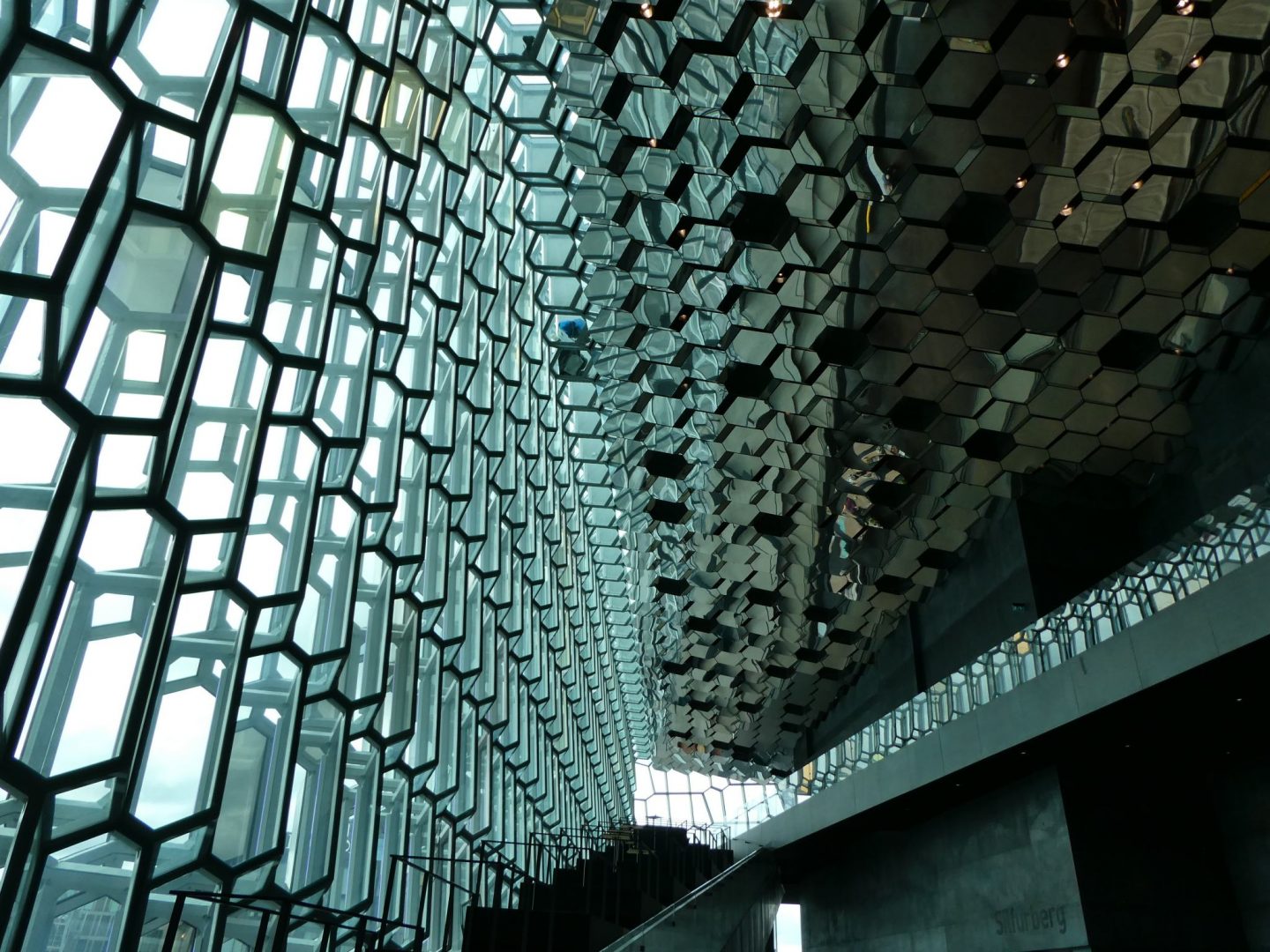 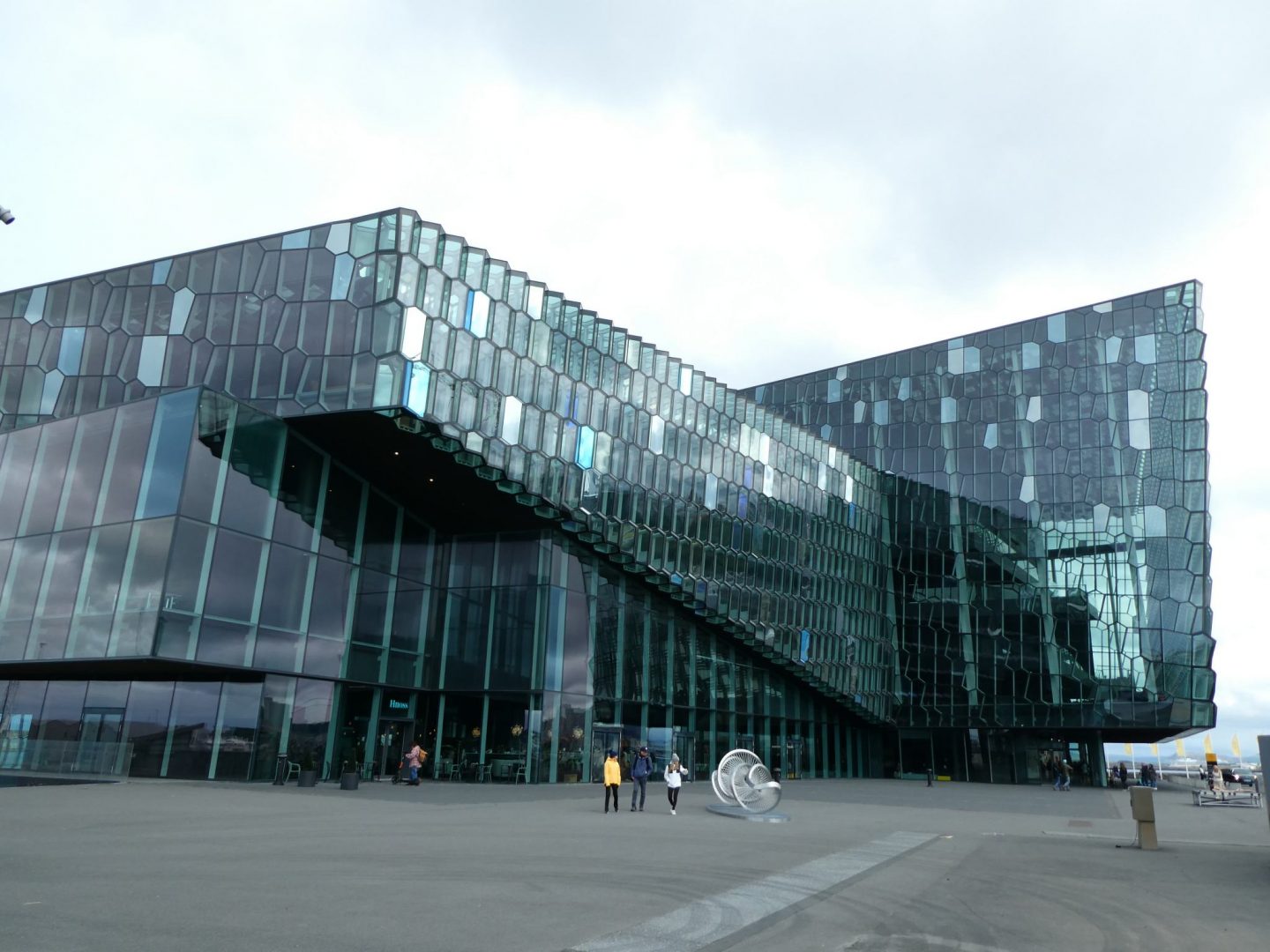 And this must be unique in the world.  At least, we hope it is, because it would be weird if it wasn’t.  In fact, it’s weird either way.  It’s the Icelandic Phallological Museum.

It started when an Icelandic schoolteacher was gifted a whip made from a bull’s penis. Apparently they are a traditional thing here.  Some of his colleagues who worked in whaling during the summer school vacation started bringing him whale penises as a joke.  He decided to start a serious collection, preserving them as scientific specimens.  It must have become quite an obsession as he managed to collect 215 penises, accounting for almost every land and sea mammal found in Iceland.   There’s non-Iceland animals as well including one from a rogue polar bear who no doubt regretted roaming so far from home.

In 1997, he had them curated and opened this museum.  Some of them are … impressive, like this 1.7m penis of the blue whale.  Iceland Review magazine dubbed it ‘a real Moby Dick’. 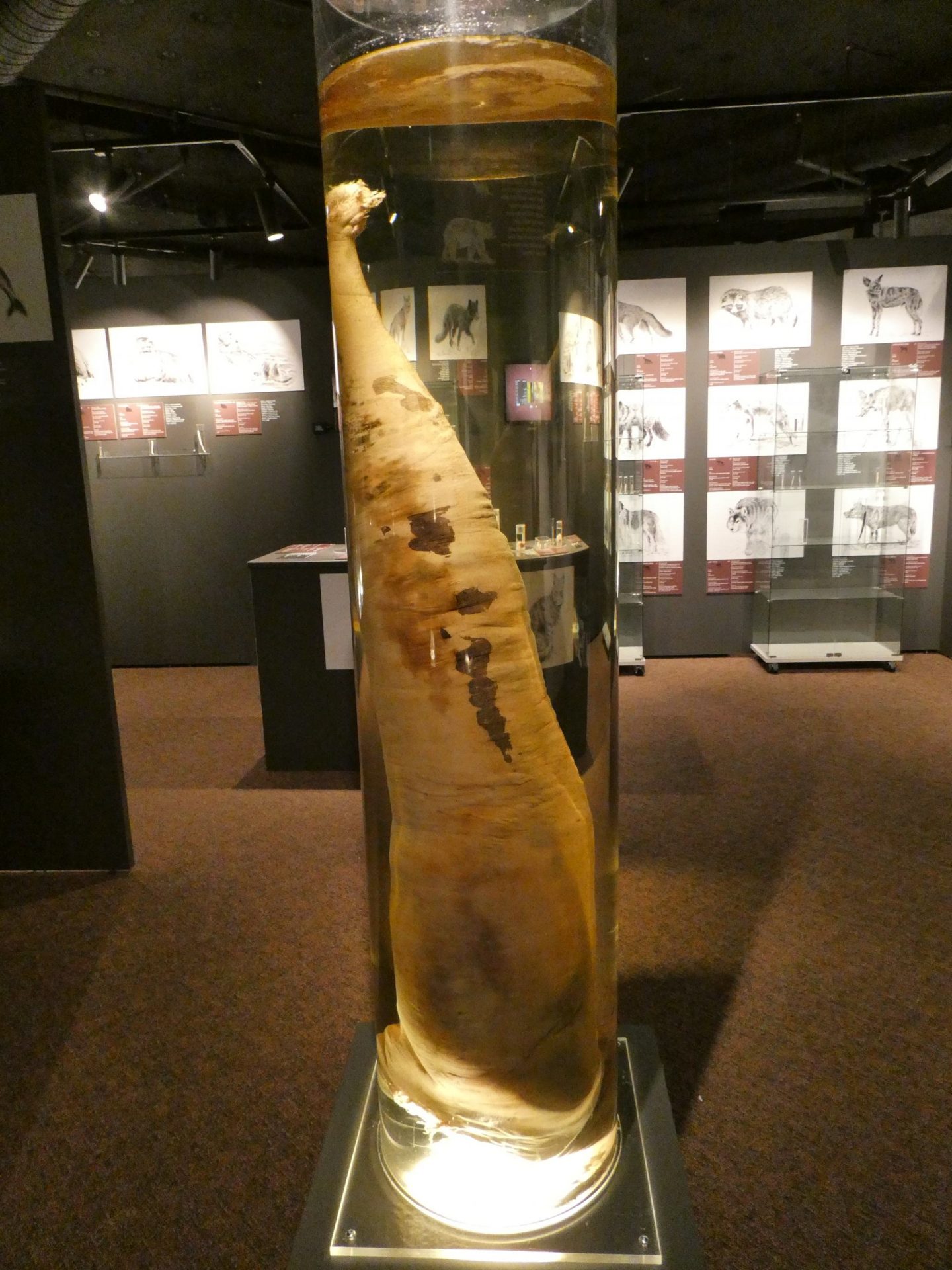 Each is displayed with an information plaque with scientific details of the species.  It’s not at all pervy.  Just makes you wonder how someone comes up with the idea in the first place.

Of course there’s some less scientific stuff as well.  Like silver representations of the members (pun intended) of the Icelandic National Handball Team which won a silver medal at the Beijing Olympics.   The team captain denies they are casts! 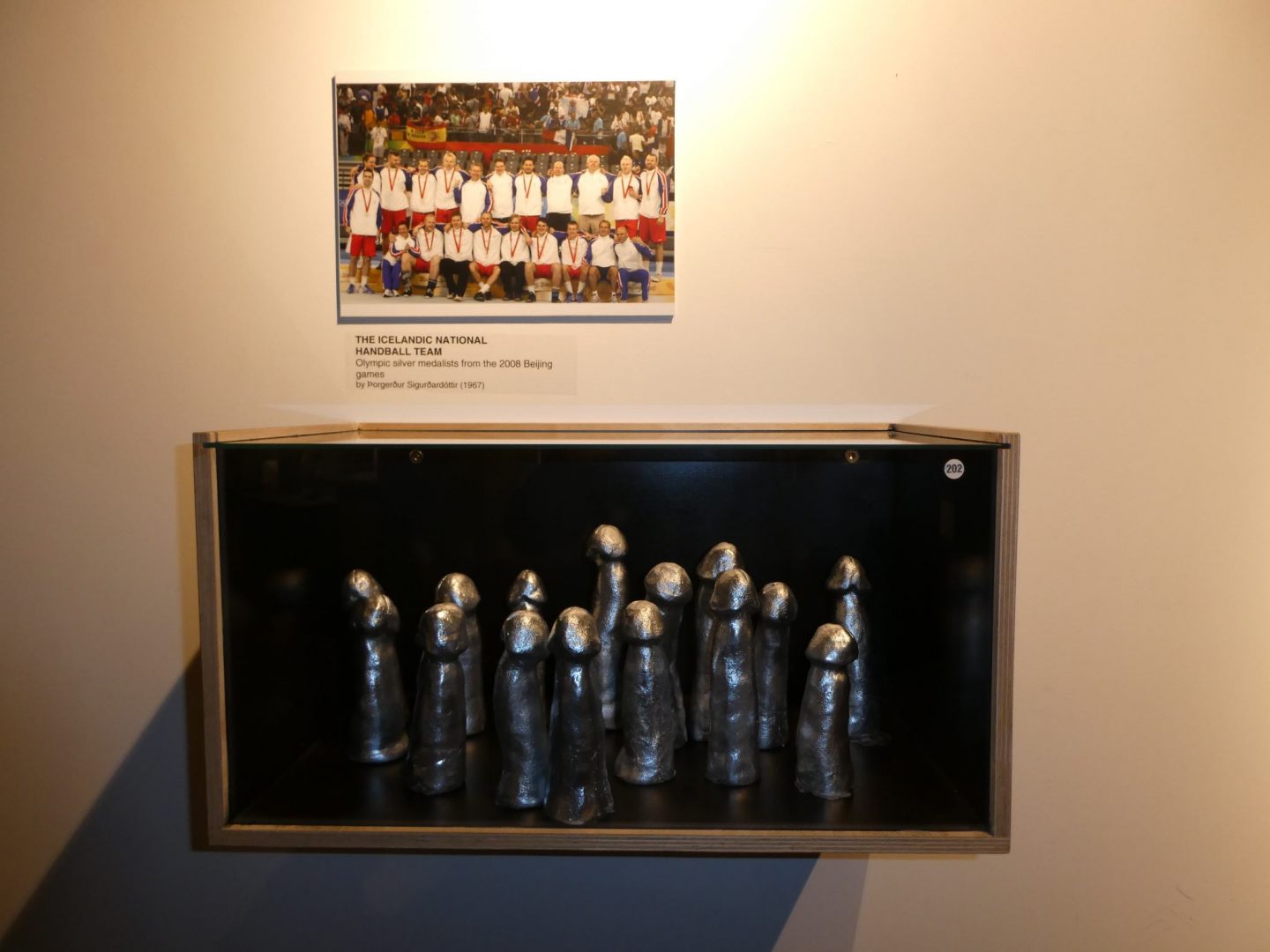 And a joke that they have a collection of the appendages of Icelandic trolls and elves but you can’t see them because these folk are invisible to humans.

Reykjavik has a reputation as a party town and it definitely is.  The centre is packed with bars and restaurants.  Not cheap but some interesting options.

One of the issues confronting visitors to Iceland is ‘should we eat whale?’  Minke is not common but it is readily available.  It’s controversial, so we did some research.

The International Whaling Commission adopted a moratorium on commercial whaling in 1986.  Iceland voluntarily stopped commercial whaling that year and ceased whaling for ‘research’ in 1989.  It resumed in 2006, limited to fin and minke whales, and with strict quotas which in fact have never come close to being reached.  Not because whales are scarce but because it wasn’t economic to hunt.  In 2017, for example, against a quota of 200 whales, only 17 were caught.  None were hunted in 2019 or 2020.

Puffin is also available on a very few menus we saw.  Hunting puffin is banned worldwide except in Iceland and the Faroe Islands.  Iceland is home to about 10 million puffins in the summer, more than 20% of the world’s Atlantic Puffin population.  Puffin colonies are strictly monitored and hunting is highly regulated. Puffin colonies are at far greater risk from climate change than the minimal amounts of hunting done for food.

Anyone who says these are not traditional foods is wrong.  Whale has been hunted here for food since the 1200s and, as you can imagine, in a country with little productive land, the harvesting of birds, any available birds, happened from day one of human habitation here.

Undoubtedly, both are now more tourist food than local food.  That’s not because of sustainability concerns but because of dwindling appeal.  For older Icelanders they are a reminder of poorer times and, like everywhere else in the world, the younger generations would rather eat pizza and hamburgers.  Having said that, a poll in 2016 – the most recent we could locate – found 19% of Icelanders had purchased whale meat in the previous 12 months. So don’t believe the sanctimonious virtue signallers who claim tourists are to blame for Iceland still offering it for sale.

So did we try them?  Yes.  On a degustation dinner there was a small tasting of smoked puffin and grilled minke. 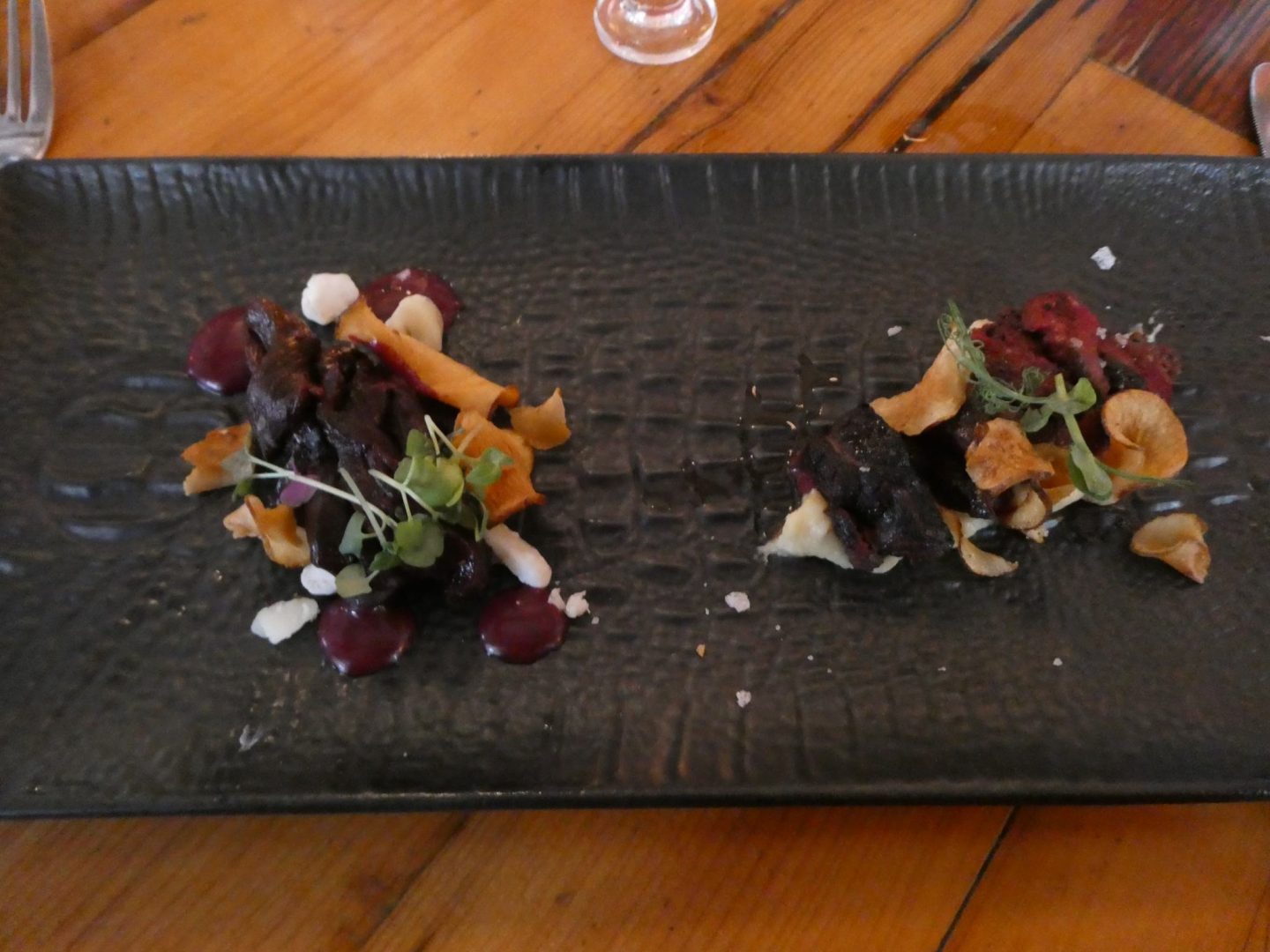 Julie thought the puffin looked like a pile of small slugs, and had a similar texture.  The whale was like very dark red meat.  Both were pleasant enough to taste but not something we’d seek out again.  Iceland whale watching tour companies run with the slogan ‘Meet us, don’t eat us’ and frankly that’s not a bad idea.

Iceland is of course famous for its thermal waters, and none more so than Blue Lagoon thanks to a legion of Instagrammers posting photos of themselves lolling in its milky blue waters against a background of black lava landscape.  National Geographic named it one of the 25 wonders of the world – something of an over-reach in our view – and Conde Naste Traveller magazine listed it in it’s Top 20 Spas in the World.  It goes without saying, then, that it is vastly over-priced but on the wish list of every traveller to Iceland.

To dispel a major myth – it is not a naturally occurring spring.  A nearby power plant harvests geothermal seawater, which comes out at 200 degrees Celsius, and uses it to heat fresh water which is piped to homes for heating.  The seawater is then released into the nearby lava field.  Initially the lava field was the pool, but now the Blue Lagoon complex consists of man-made pools into which the water is piped.  So really, it’s a swimming pool full of the wastewater of a geothermal power plant.

That may sound icky, which is why they don’t advertise the fact, but it’s not.  The water is clean, it’s exactly as it came out of the sea only cooler, and because it is a constant stream flowing through, the content of the pools is completely renewed every 48 hours.   Not icky, just not as romantic as it’s image.

Thankfully it’s big enough to find a space to yourself away from the beautiful people.  The water temperature varies between about 38 and 40 degrees Celsius in different parts of the pool and the silicate makes the water feel slinky.  It’s a very relaxing experience. 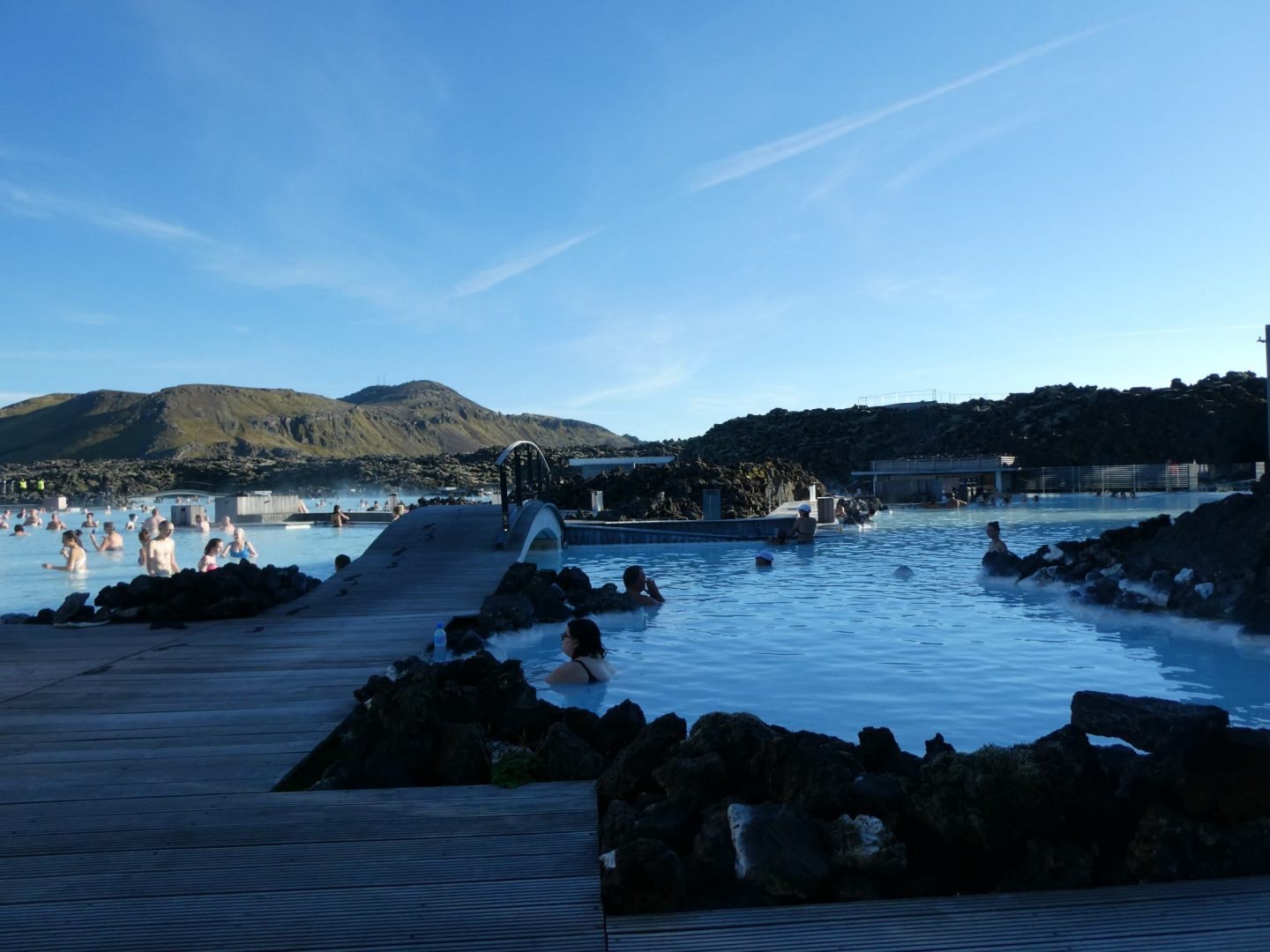 There’s a swim up spa bar where you can get a handful of sticky, silty goo for a do-it-yourself silica mud face mask.  The Instagrammers avoid this one.  Who wants to post photos of themselves with a face caked in mud! 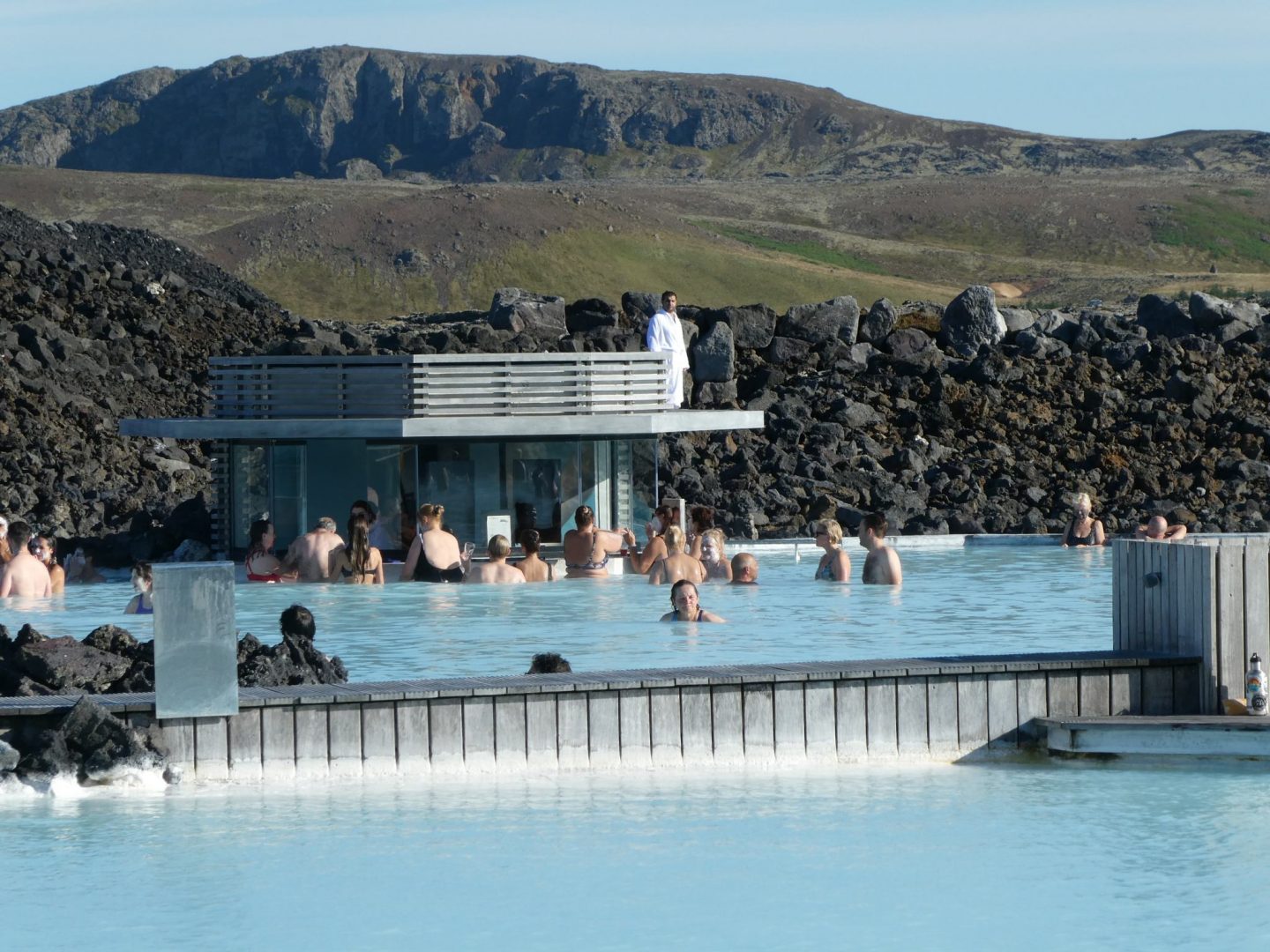 John is rather ambivalent toward hot springs, spas and the like.  Except when there’s a swim-up drinks bar.  And with one drink included in the entrance price, Blue Lagoon was judged to be ok, after all. 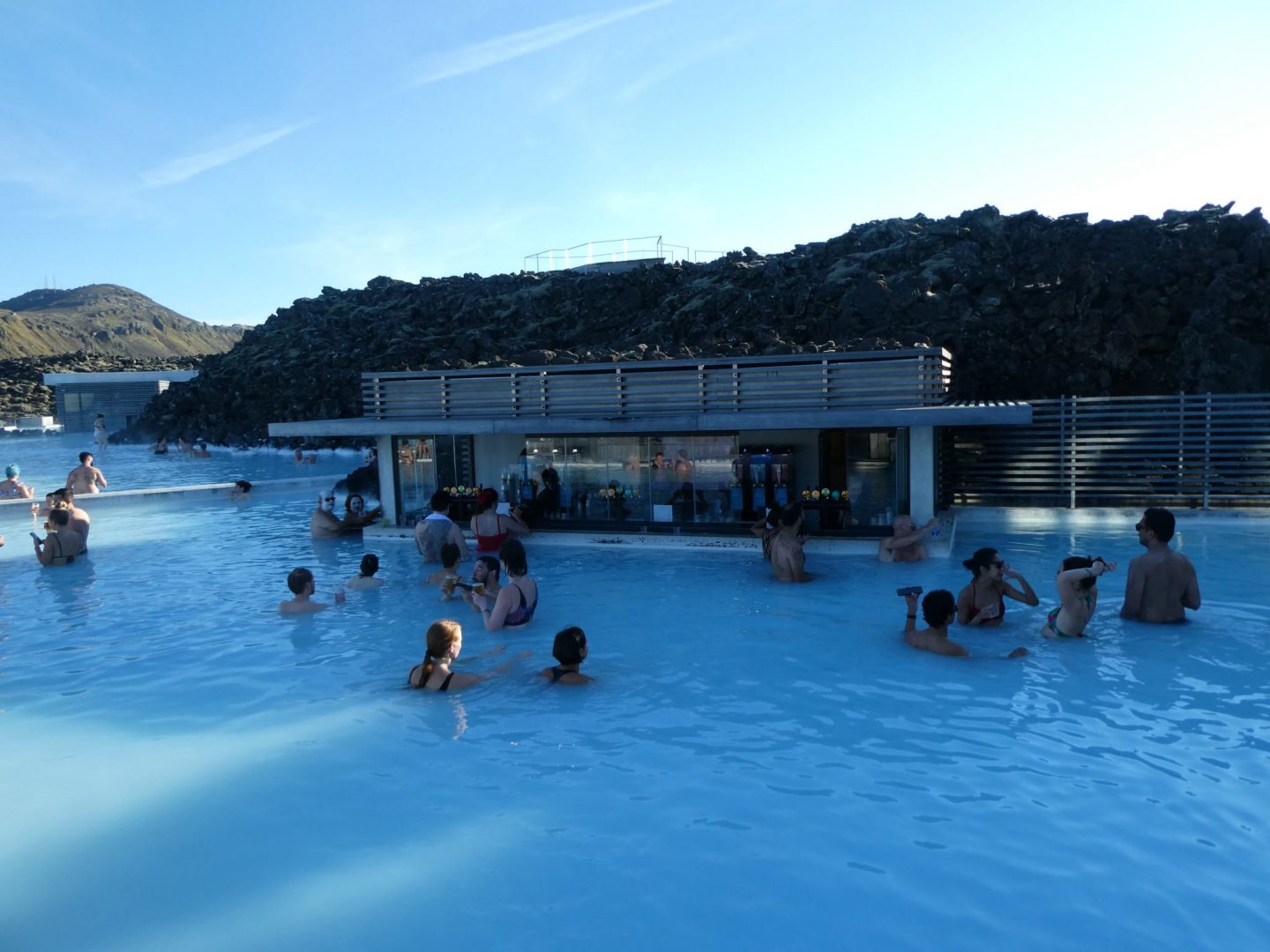 In a post to come, we’ll describe the other end of the Icelandic hot springs experience.  Stay tuned.