Vestmannaeyjar is a group of 15 islands off the coast of Iceland, formed by submarine lava eruptions between 10,000 and 12,000 years ago.  Except for one that’s new.  Surtsey was created in the 1960s when a volcanic eruption which began 130 metres under the sea broke the surface, eventually creating an island of 2.7 square kms.  It could be the planet’s newest island.

The only inhabited island is Heimaey, home to 4,500 people and, in the breeding season, 8 million puffins.

It’s a place with an interesting history.

Remember our last post mentioned Ingolfur Arnarson, who founded Reykjavik?  His brother came with him intending also to settle in Iceland, but while Ingolfur’s slaves went off looking for the high pillars, his brother’s Irish slaves revolted, murdered their master and fled. Ingolfur tracked them to the Vestmannaeyjar Islands and murdered them in retribution.  Brutal times.

That’s how the islands got their name.  ‘Vestmenn’ is Old Norse for ‘westmen’, the term used by the Norsemen for the Irish.

Despite that start, a fishing community developed here early.

According to the Icelandic Sagas, in about 1,000CE, King Olaf of Norway sent a team to Iceland to ‘convince’ its inhabitants to embrace Christianity.  The Sagas nominate Heimaey as their first landing site and record they built a church here with wood brought with them from Norway.

Unsurprisingly, many locals weren’t happy to give up their pagan beliefs on the say-so of blow-ins.  The conversion process required the usual bloodshed, both here and across the Icelandic mainland as they continued their relentless crusade.  But time heals all wounds it seems.  In 2000, to celebrate 1,000 years of Christianity in Iceland, Norway gifted the Stave Church, an exact replica of one in Trondheim, Norway and erected it here where it all began. 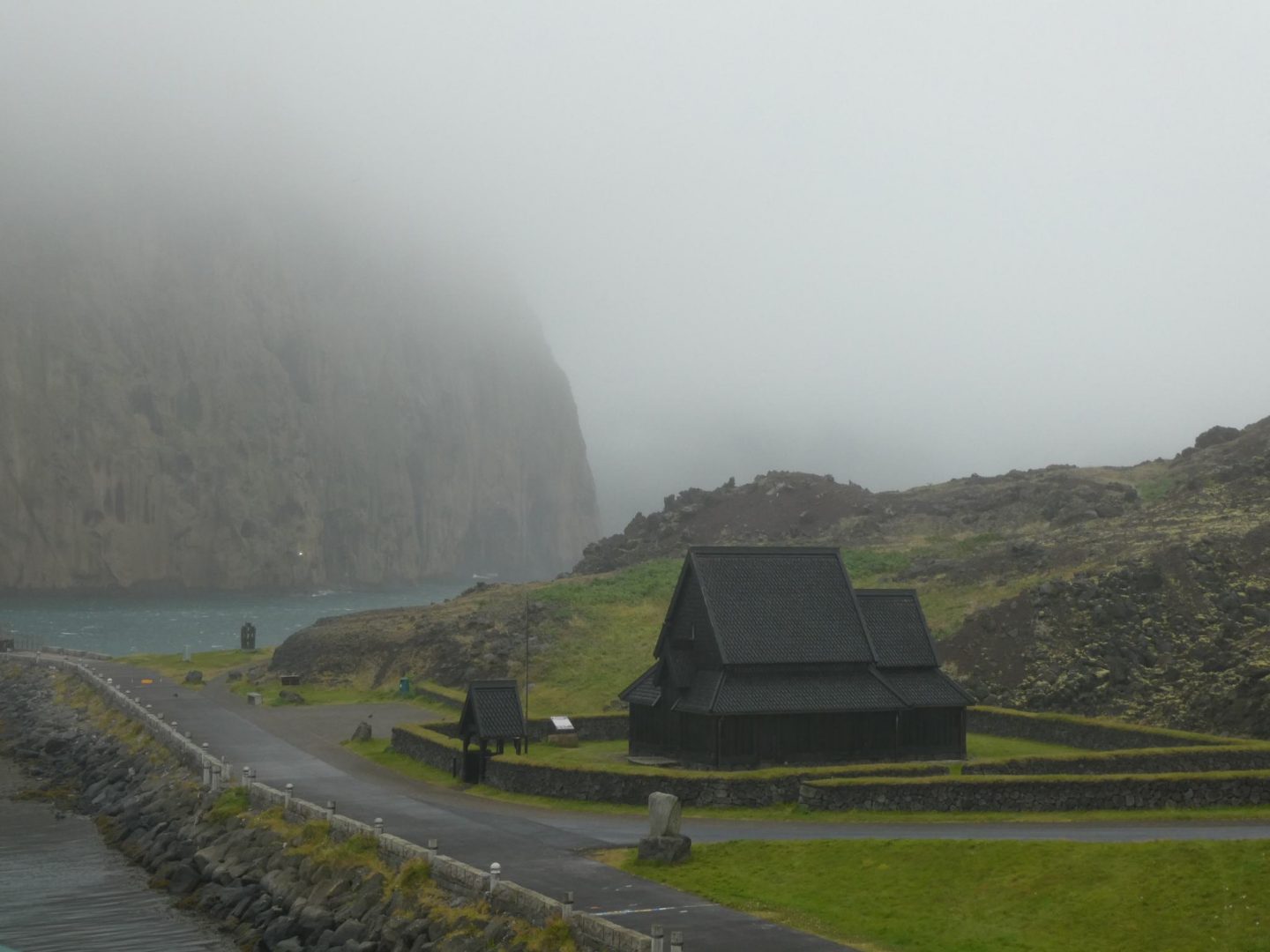 Fast forward 600 years to a foreign incursion of a different kind.  In 1627, Barbary pirates raided Heimaey, captured 234 people and took them back to a slave market in Algeria, a journey of 27 days.  Nine years later a ransom was paid which secured the release of 34 of them.  Some others had already died and the rest were made slaves on galley ships or consigned to harems.

A fort had existed on Heimaey harbour prior to the raid but the incident led to it being fortified and a guard post was added on the cliff top to watch for the approach of foreign ships.  Skansinn, meaning ‘the bastion’, operated until 1869 and has been rebuilt in modern times as a historical site. 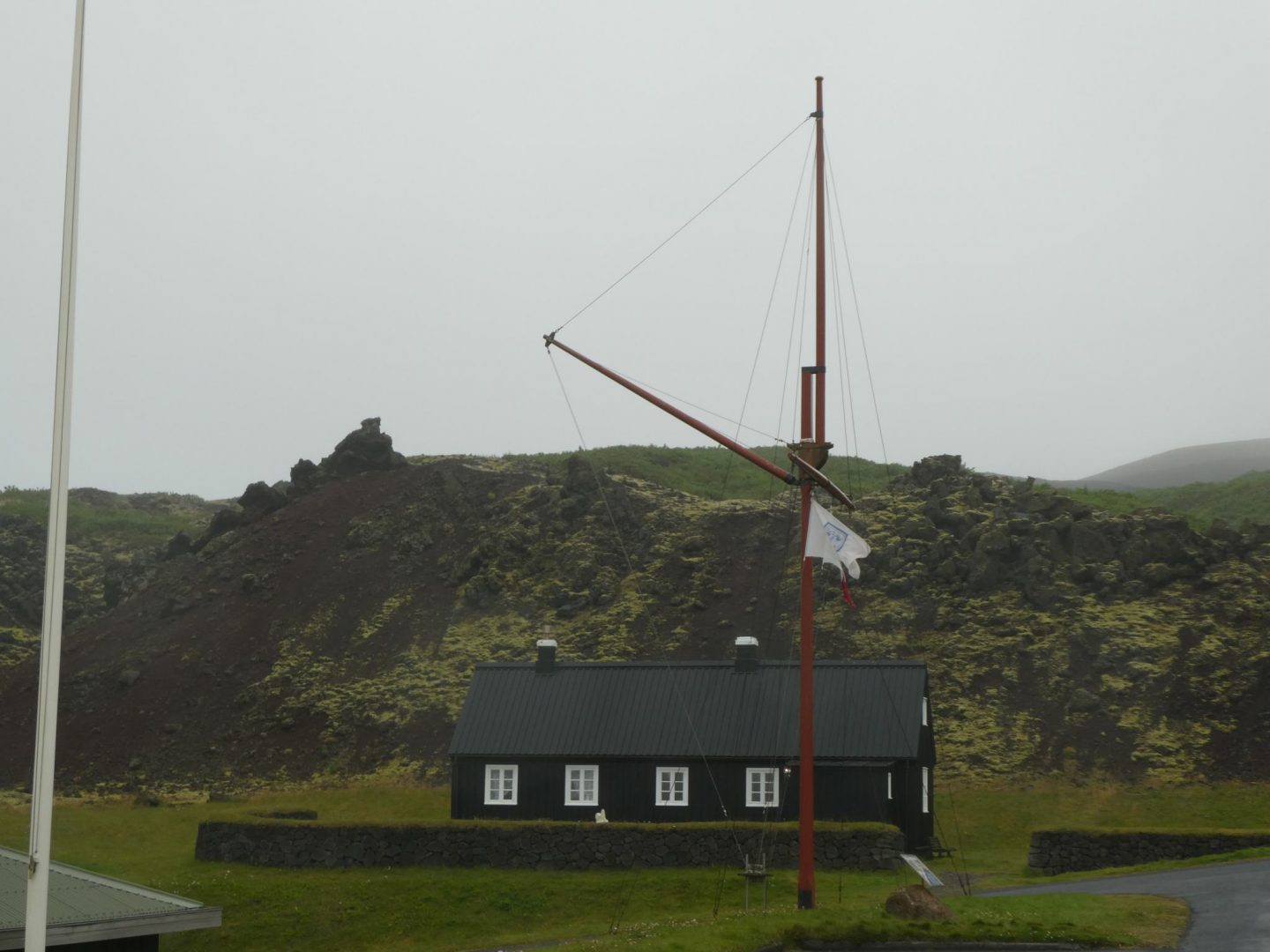 In the 1800s, it was disease.  It is estimated that in 1842, three out of every four infants born alive in Heimaey died of neonatal tetanus.  It’s a shocking statistic.

A local woman, Solveig Palsdottir went to Copenhagen to study midwifery and infant care, returning to Heimaey as one of the first Icelanders to receive formal midwifery training overseas.

Together with a Danish doctor who arrived in 1847, she started a regime of smearing the newborn’s cut umbilical cord with a balm used by Amazonian Indians for wound healing.

It’s now known that the bacteria responsible for neonatal tetanus is in the soil. Laundry dried by laying it on stone walls picked up the bacteria and infants were infected via their umbilical cord stump.  It’s not clear whether the Amazonian balm had any healing powers or just created a barrier to infection, but either way, the death rate dropped to one in twenty, the balm was used until the end of the 19th century and neonatal tetanus was effectively eradicated.

Her house is the second oldest structure still standing on Heimaey and she is a local hero. 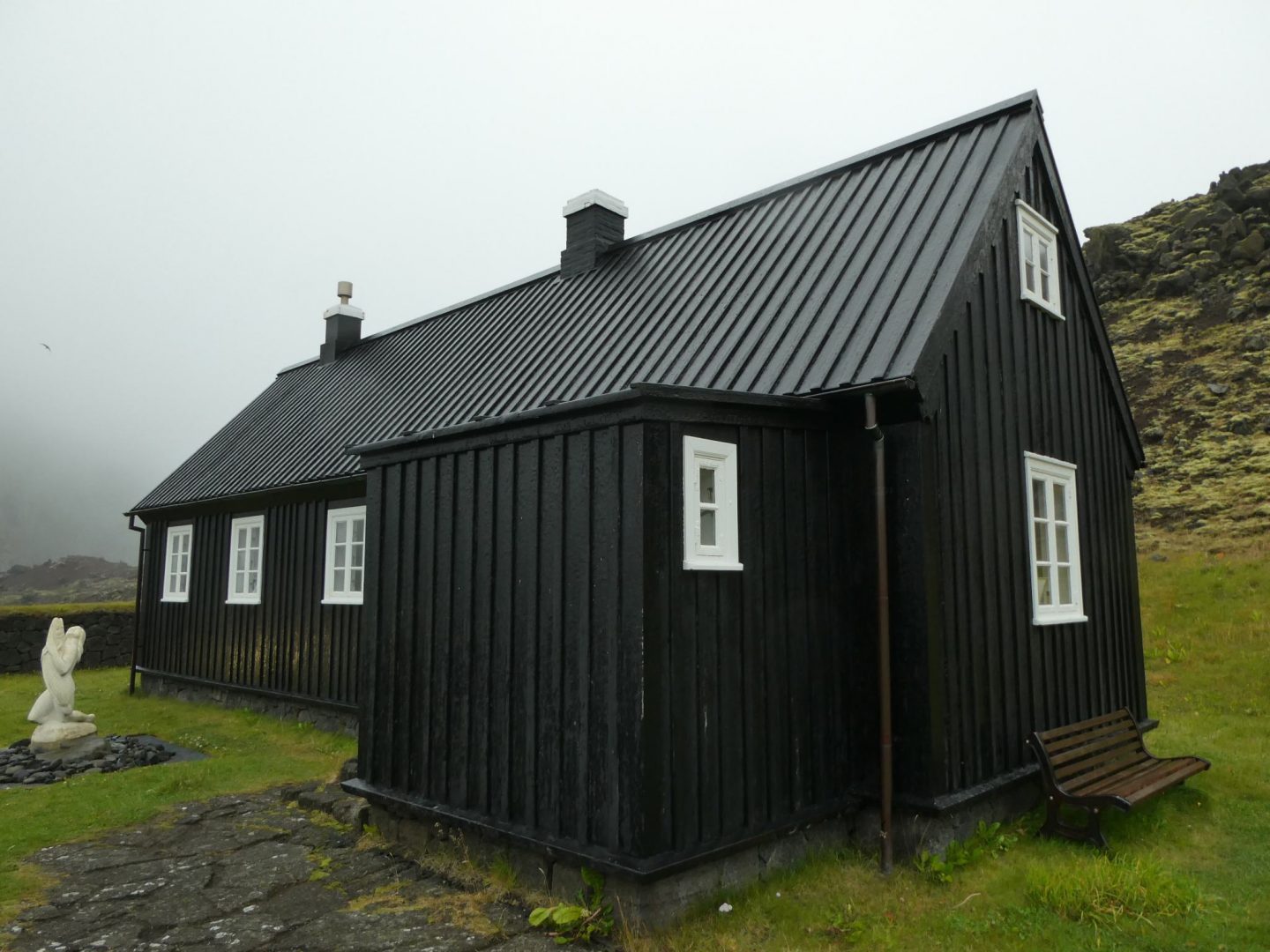 Moving to more modern times, Vestmannaeyjar shot to international awareness in 1973 when the Eldfell Volcano on Heimaey’s eastern flank suddenly erupted.  At 1.55am on 23 January 1973, a massive volcanic fissure opened less than one kilometre from Heimaey town centre, expanding rapidly until it crossed the island from one coast to the other.  Lava began erupting 50 to 150 metres into the air along the entire length of the fissure.

In a huge stroke of luck, storms the previous day had prevented the fishing fleet going out. All boats were in port.  Within six hours, almost all of the island’s 5,300 inhabitants had been evacuated.  Miraculously only one person died – a man who took advantage of the chaos to break into a pharmacy seeking drugs was overcome by toxic fumes which had concentrated in the closed building.  There’s a moral in that.

The evacuated islanders had no option but to wait it out.  But the eruption kept going for five months.  As the lava front crept inexorably forward, not only was the town being lost but it began to look like subsuming the harbour.  Losing its only sheltered harbour would have destroyed the island’s economy.  Without fishing, there would be no reason for anyone to return.

Over a four month period, 7.5 million cubic metres of seawater was sprayed onto the advancing lava to cool it and hasten solidifying before it reached the harbour.  It is the most extensive intervention ever used to arrest lava flow.  Workers who dubbed themselves ‘the Suicide Squad’ laid pipes over active lava up to 130 metres inward of the flow front to position the necessary pumps.  Remarkably there were no deaths or serious injuries.  Their efforts stopped the lava advance just 100 metres short of where it would have blocked the harbour entrance.

Here is an aerial photo taken after the town was re-established which shows just how close it came to being closed off.  The dark area in the foreground is the lava field.  Ironically it has improved the harbour by providing a more protected entrance. 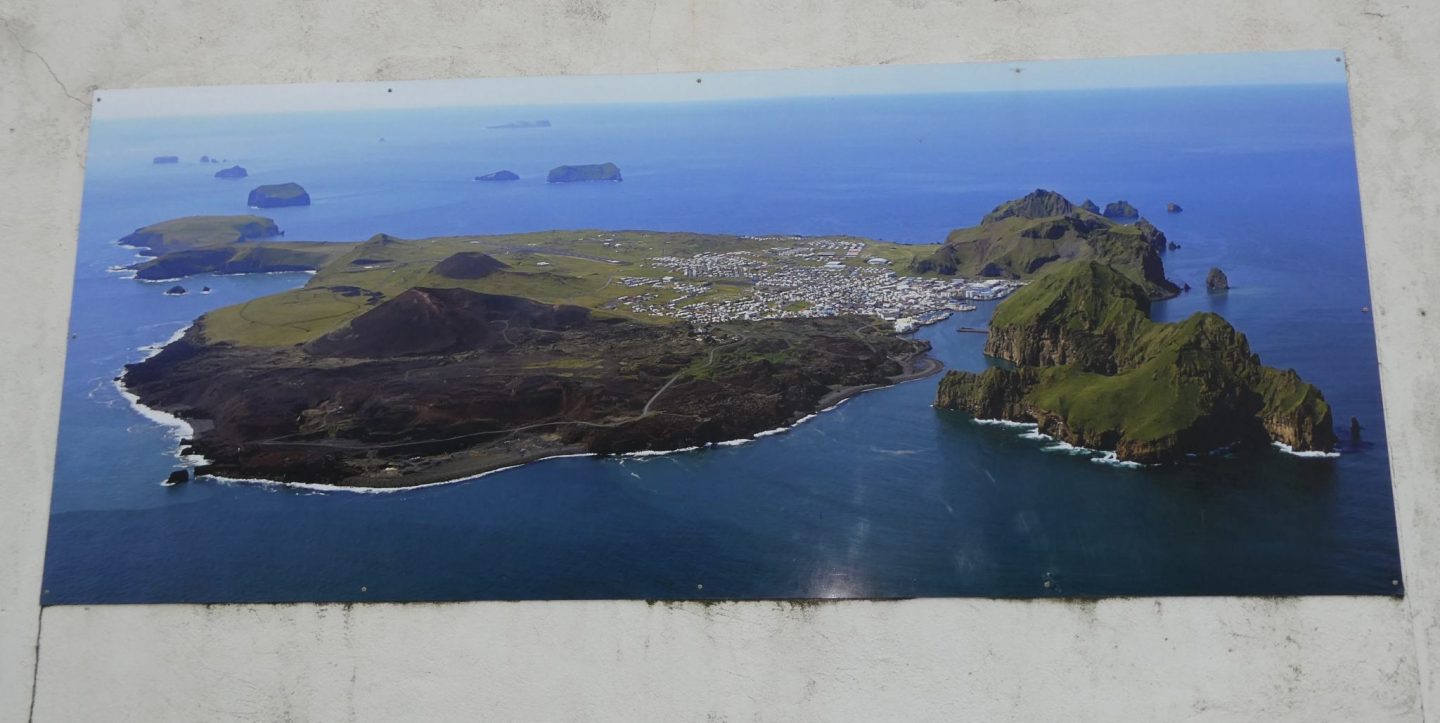 By the end of the eruption, more than half the homes and businesses on the island had been swallowed by lava or buried under volcanic ash.  Many could do nothing but erect a cross to mark the site of their former home. 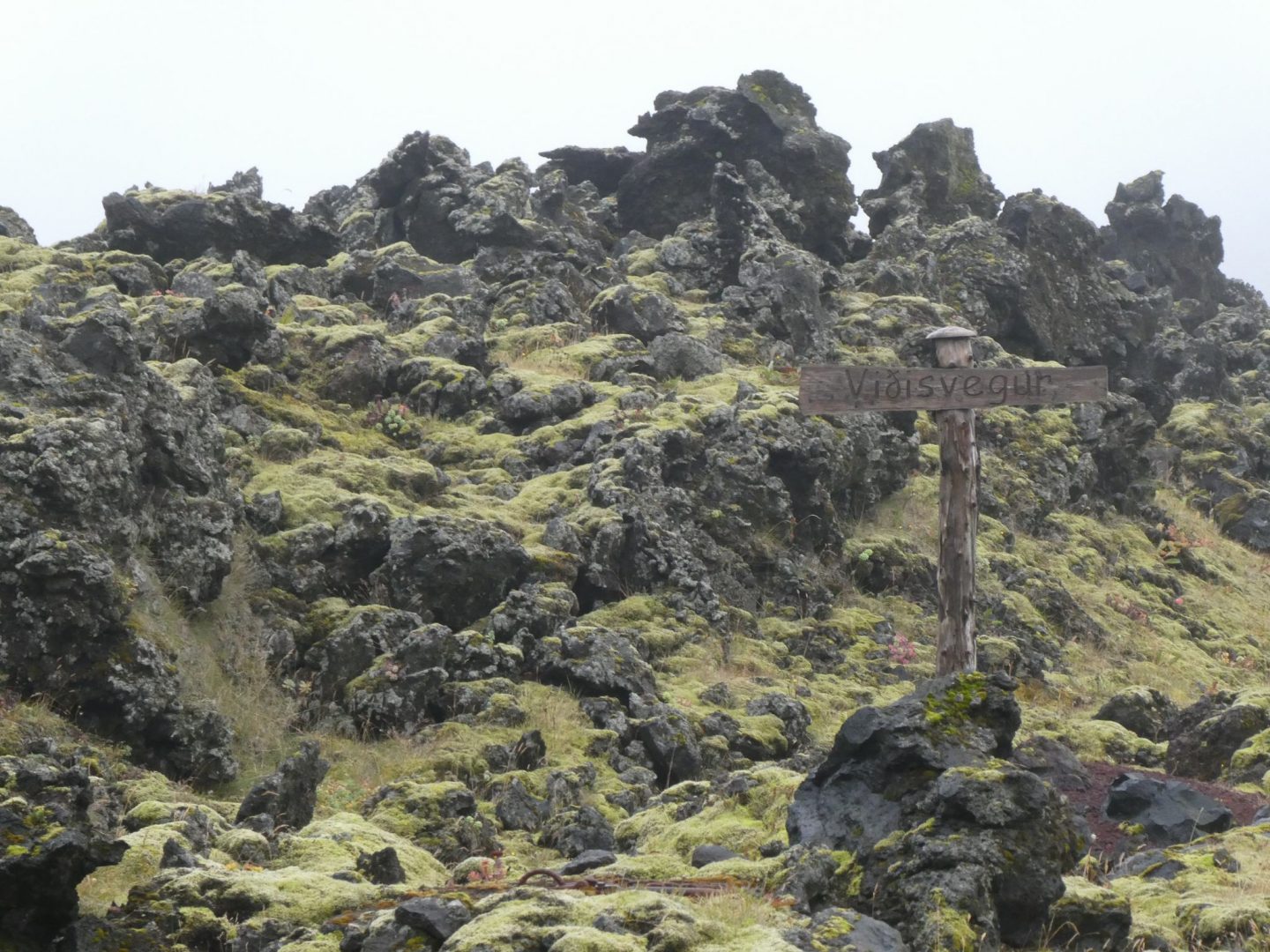 Others were lucky, with lava stopping literally on their back doorstep. 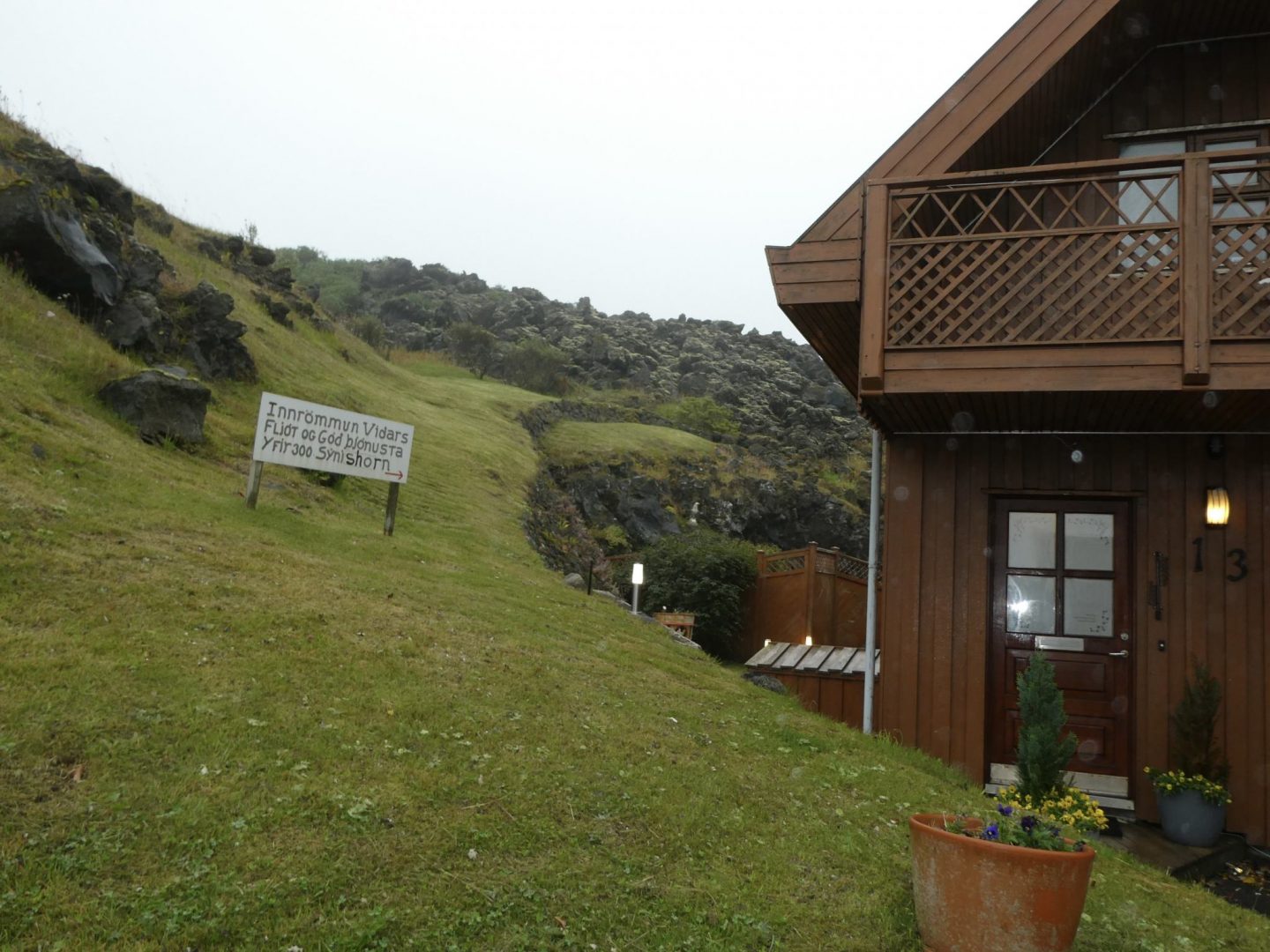 Lava surrounded this house, destroying all but the front room and a section of veranda.  The part that remained finally collapsed in 2013 but has been restored and a screen inside shows images of the destruction. 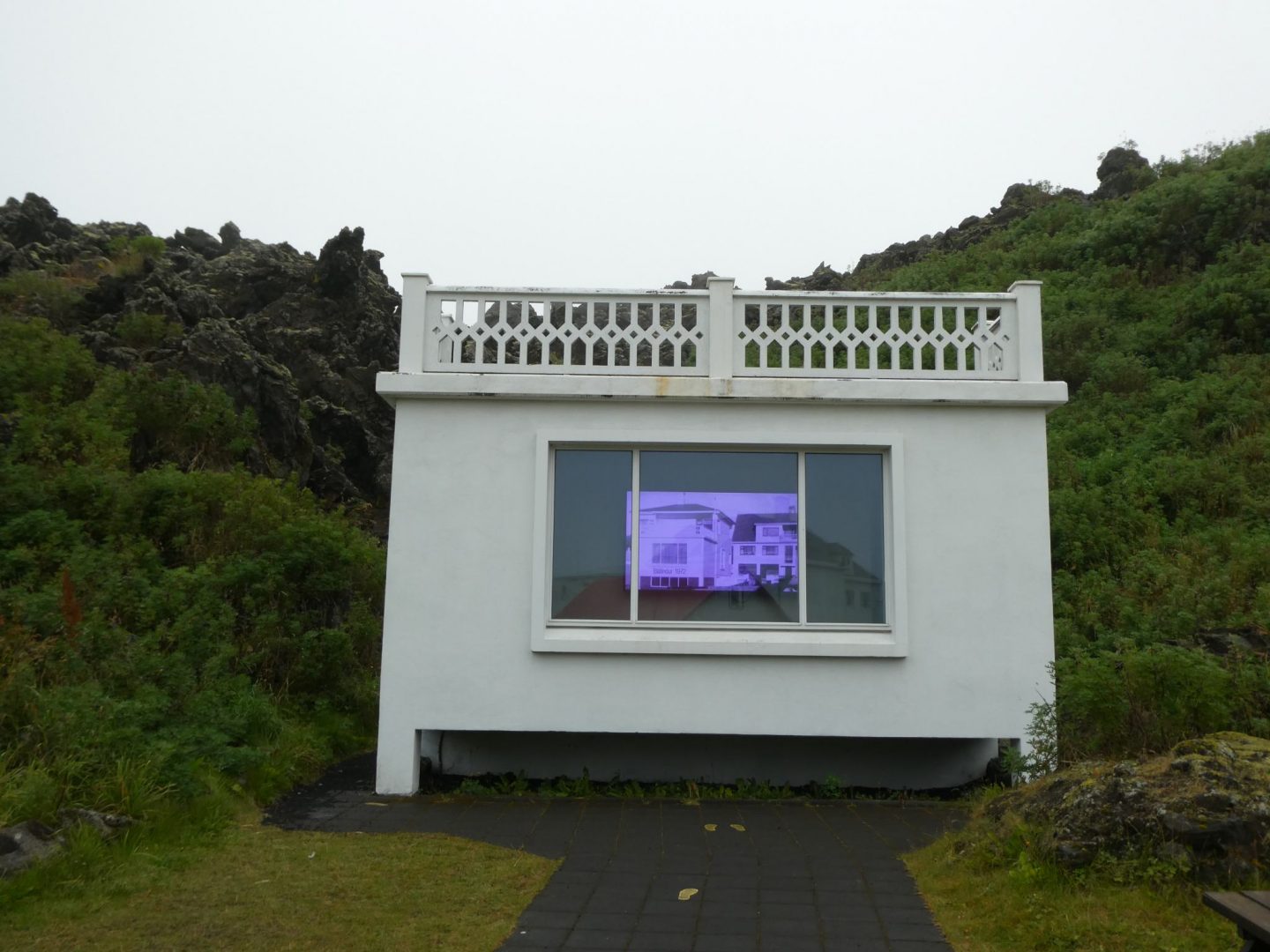 There’s an excellent museum dedicated to the Eldfell eruption, built around a house which has been painstakingly excavated from the ash. 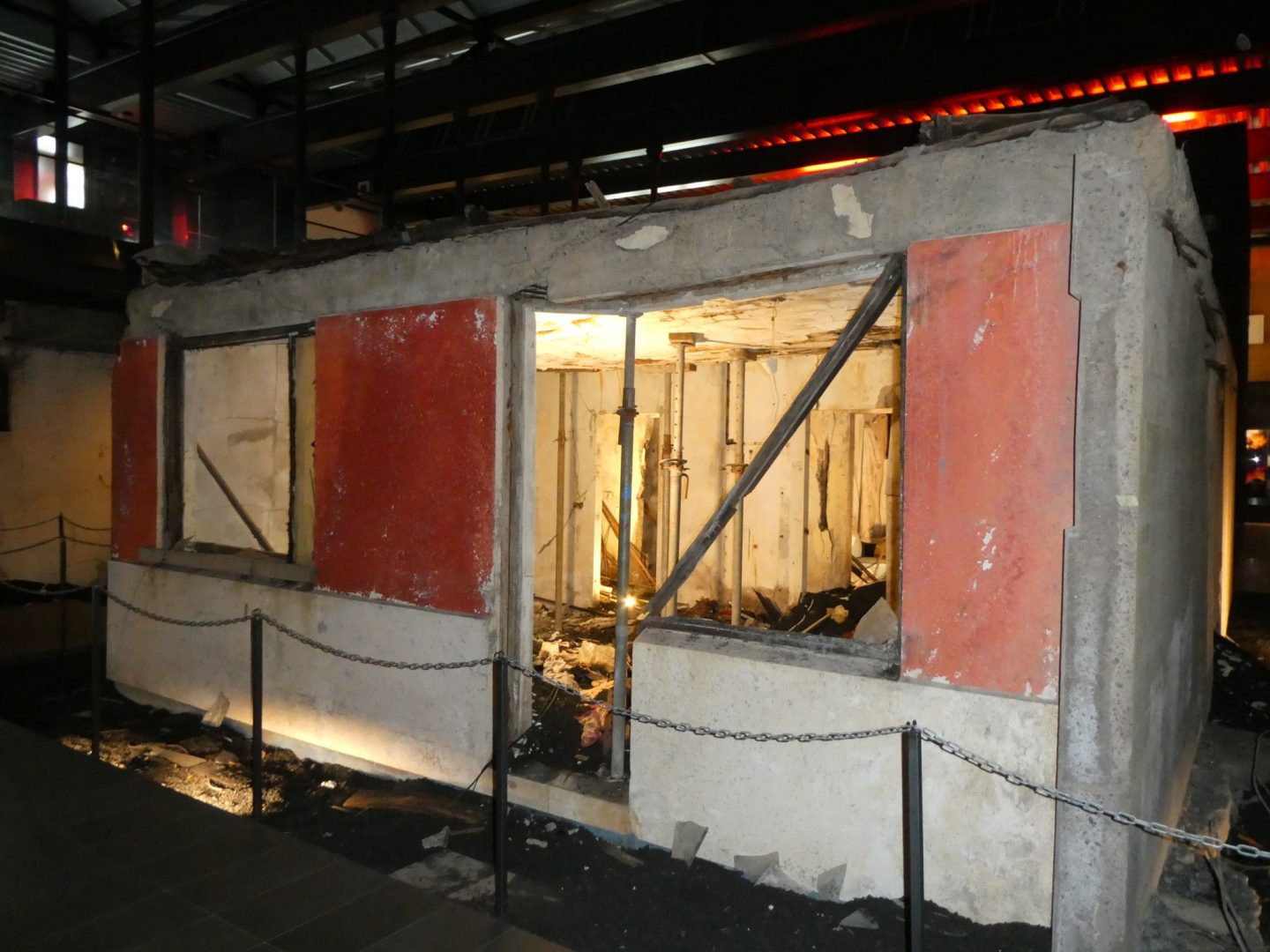 Vestmannaeyjar has a brutal climate, even by Icelandic standards.  Cape Storhofdi on Heimaey lays claim to being the windiest place in Europe, recording wind speeds of up to 220km/hour.  Summers are short and cold, with an average high temperature of 12 degrees Celsius.   You may have noticed from the photos that the weather was not great during our visit.  Cold, blustery winds, showers and increasingly foggy.  We’d intended to climb Eldfell and do some hiking along the cliffs but the thick fog meant there simply wasn’t any point. 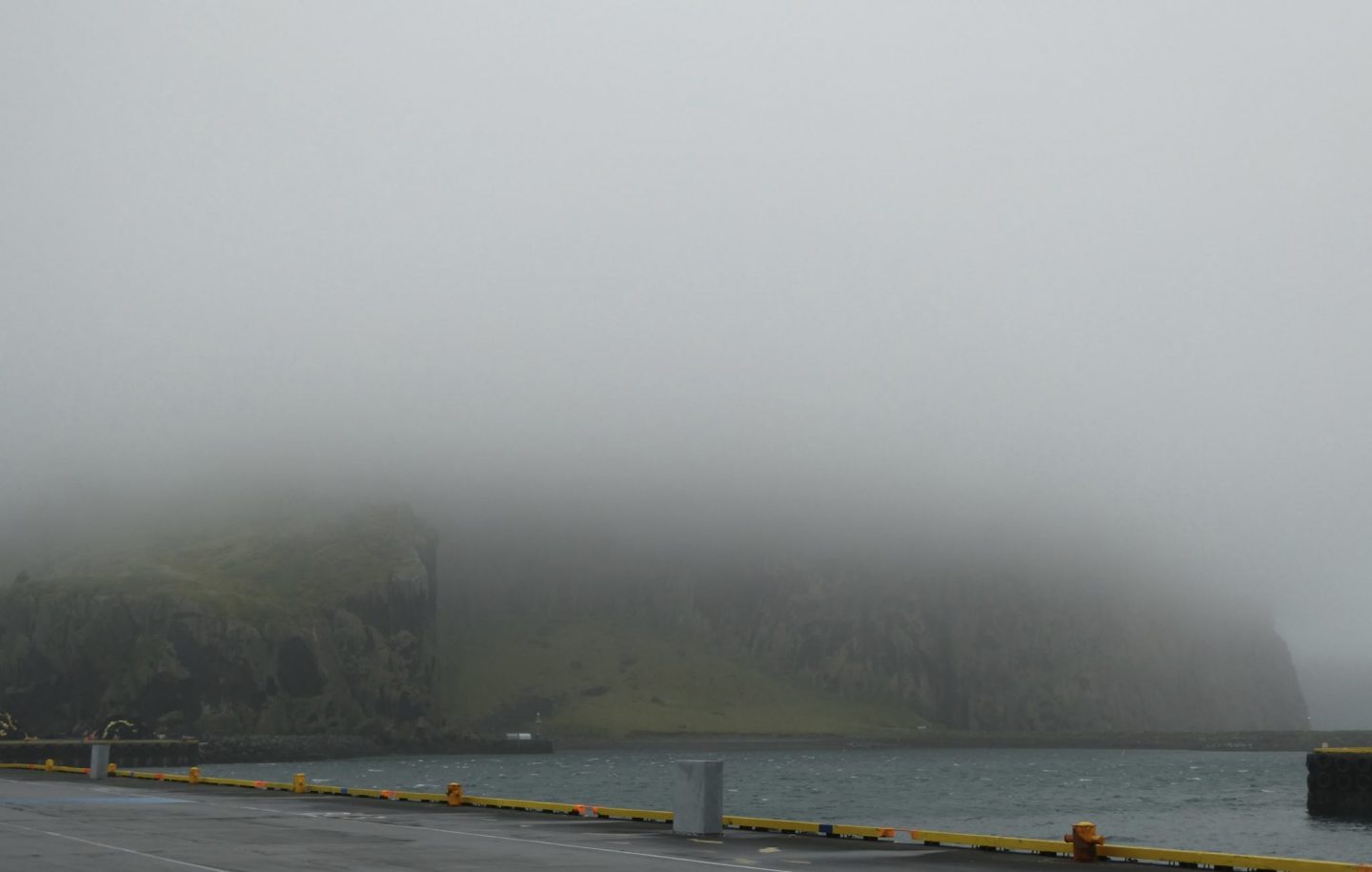 We conceded defeat and retreated back to the mainland.  A bottle of red and a spectacular Iceland sunset gave us hope for better weather to come. 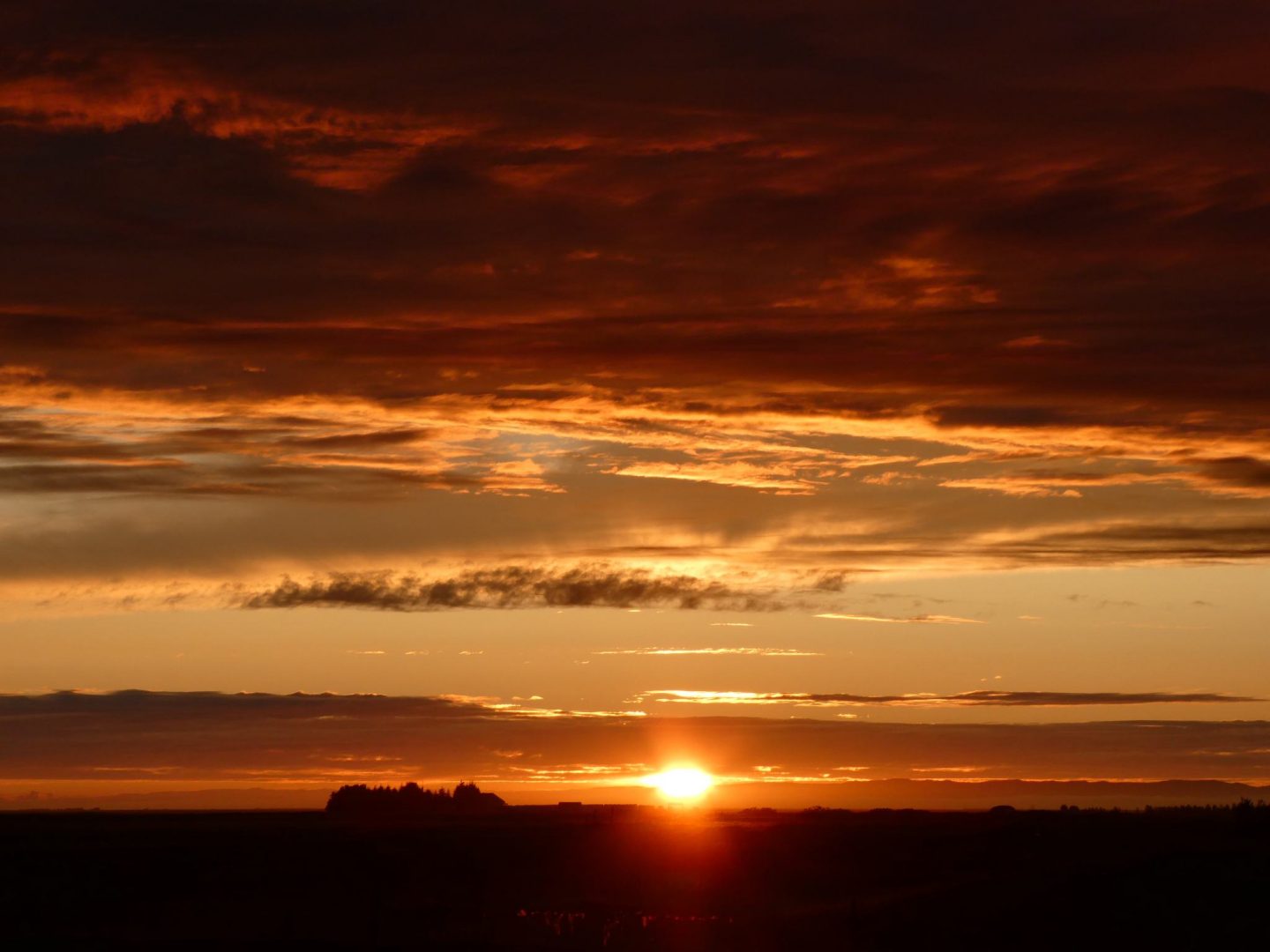