The Golden Circle is a 300km tourist drive up through the southern uplands north of Reykjavik.  Coming from the west, our first stop was the Haukadular Valley where active steam vents and geysers abound. 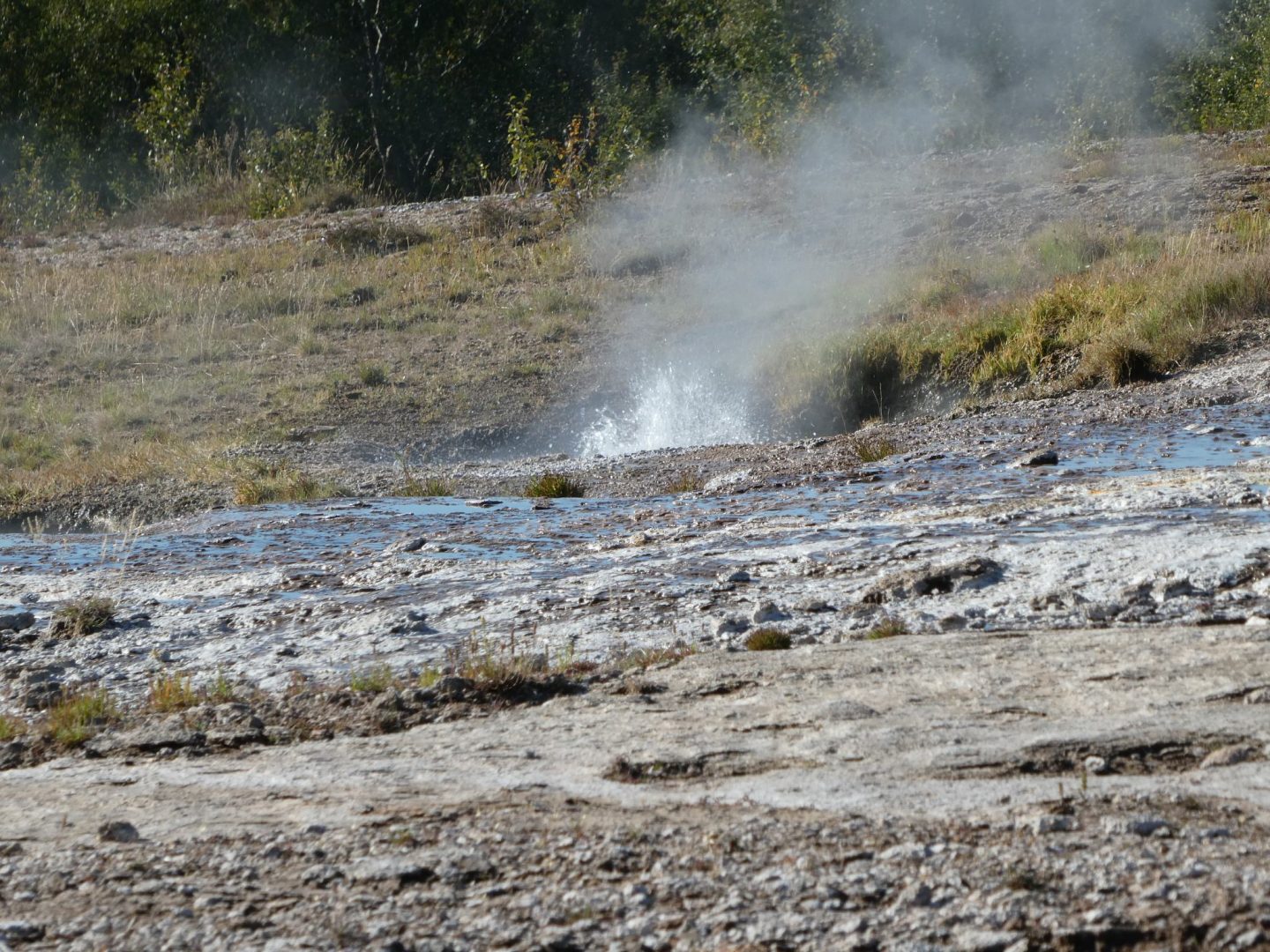 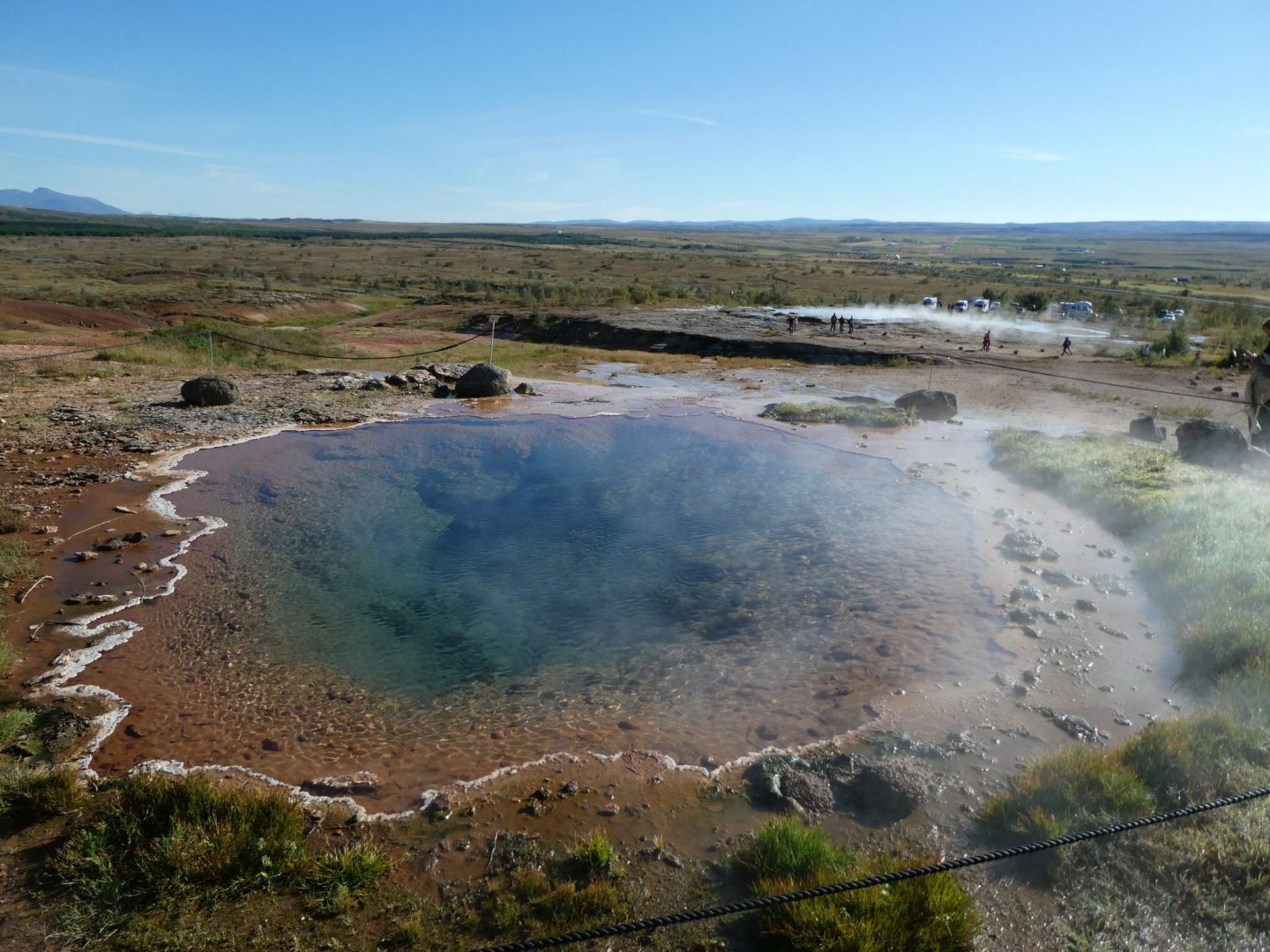 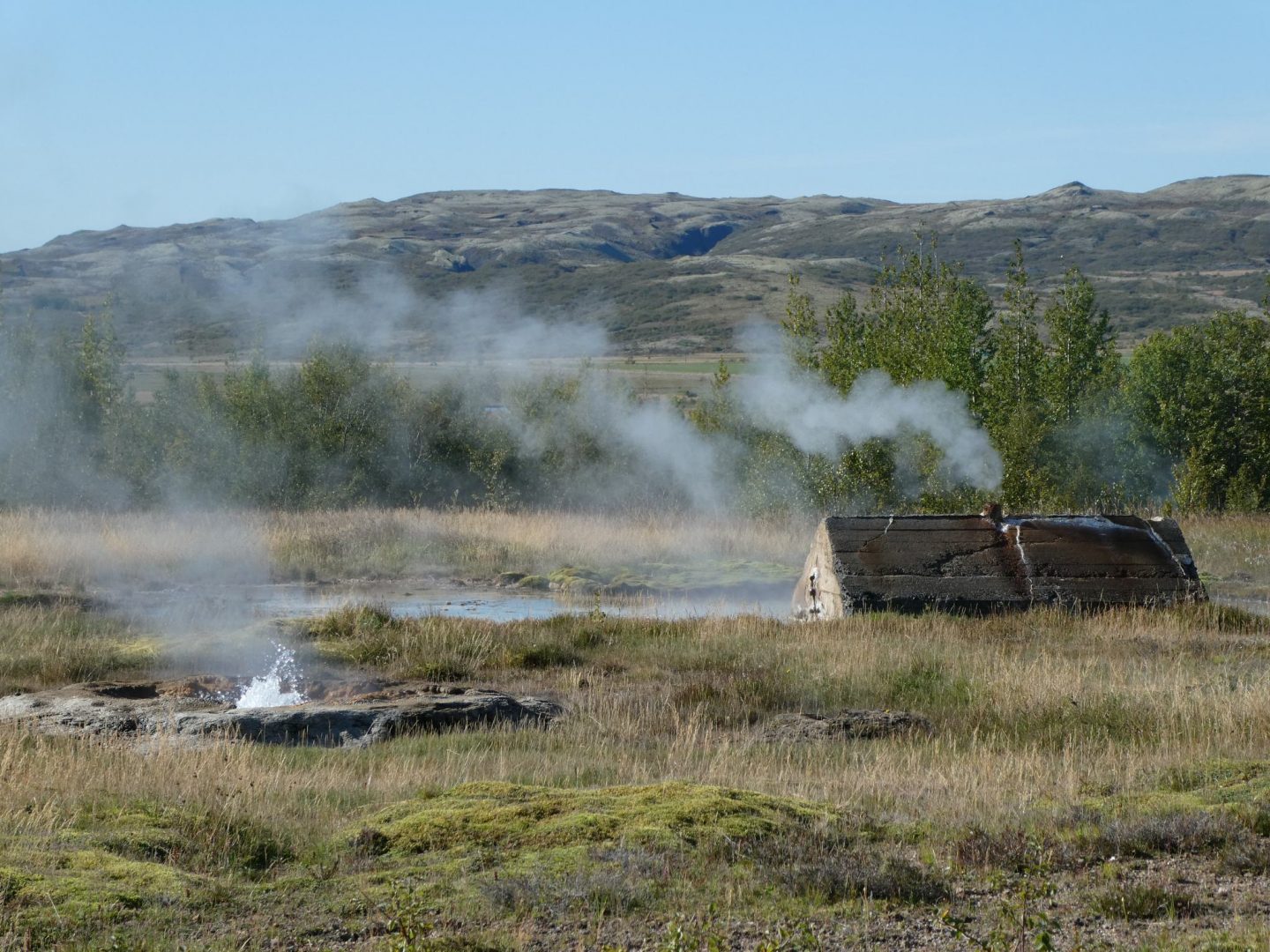 The definition of a geyser is ‘a vent in the earth’s surface that periodically ejects a column of hot water and steam’.  The original Geysir, which is said to have lent its name to all others, is here but is now rarely active.  Strokkur, however, is absolutely reliable.  Now Iceland’s most famous geyser, it shoots a powerful jet of boiling water 20 to 40 metres into the sky about every six minutes.  So turn up anytime and you won’t have to wait for long. 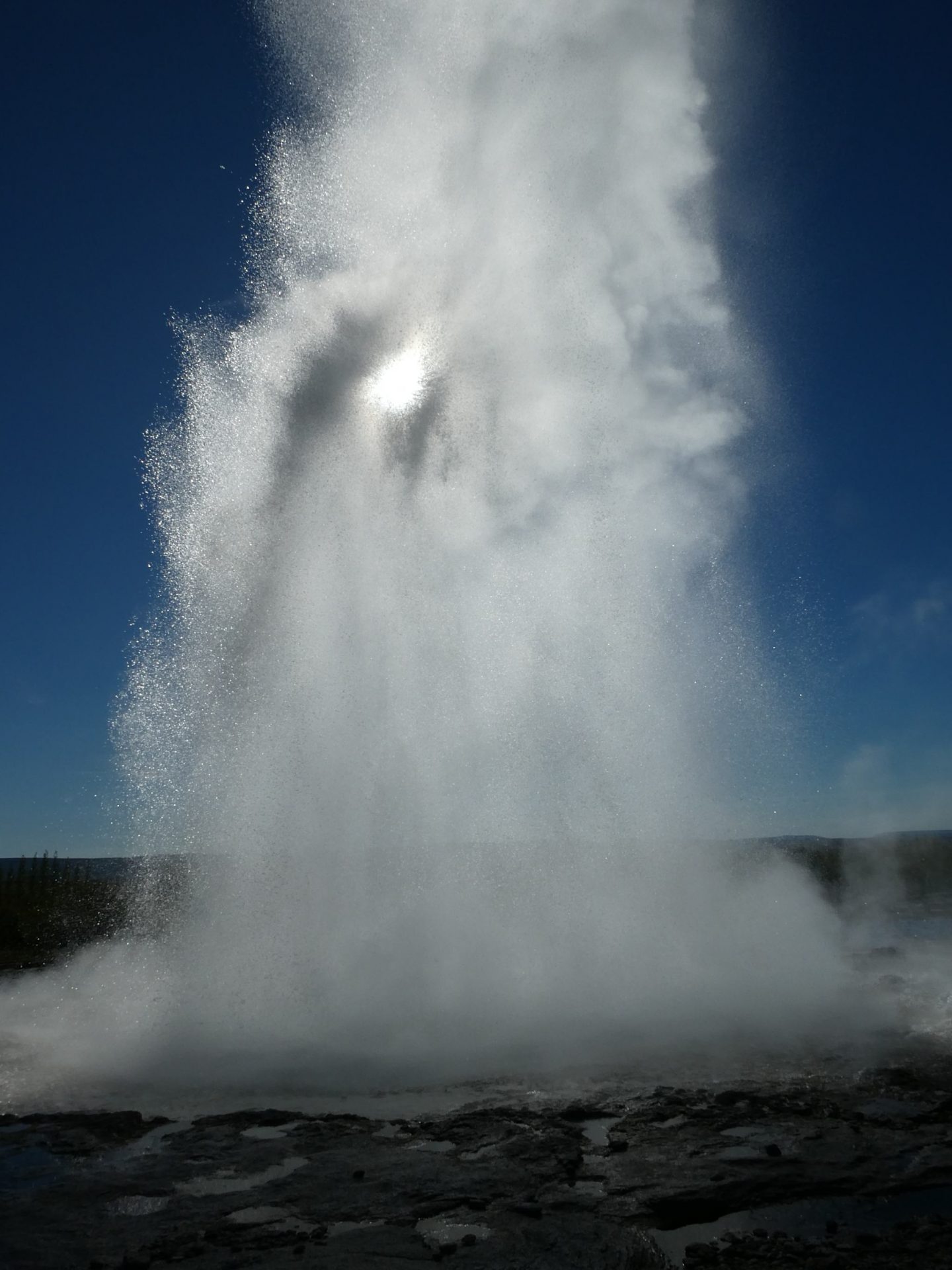 For a bird’s eye view, climb to the nearby lookout. 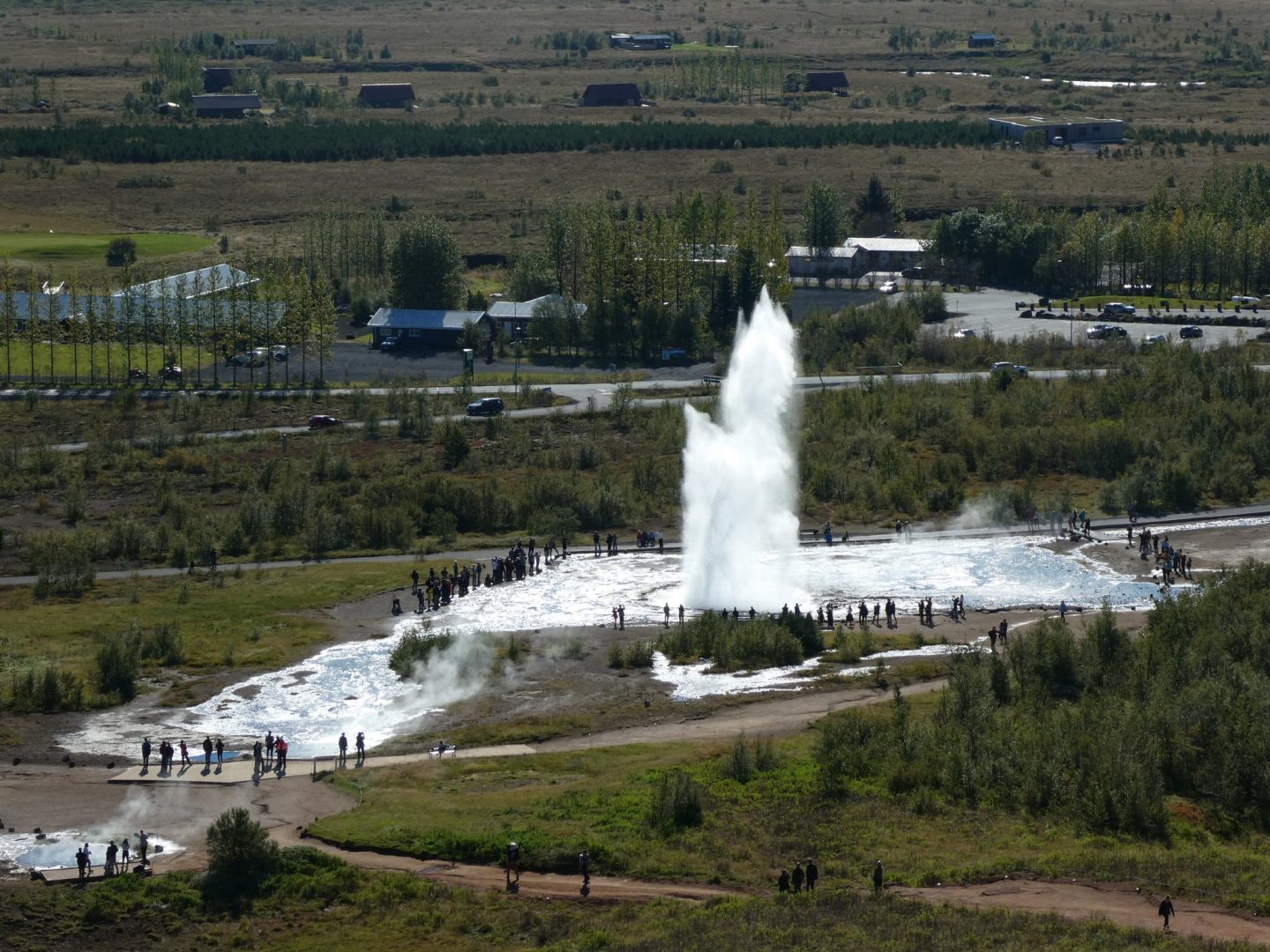 Not far away is Gullfoss.   It’s one of Iceland’s best known and most visited waterfalls, thanks to its relative proximity to Reykjavik, impressive power and intrinsic beauty.  In summer 140 cubic metres of water per second pour over the two stage drop and into the canyon below. 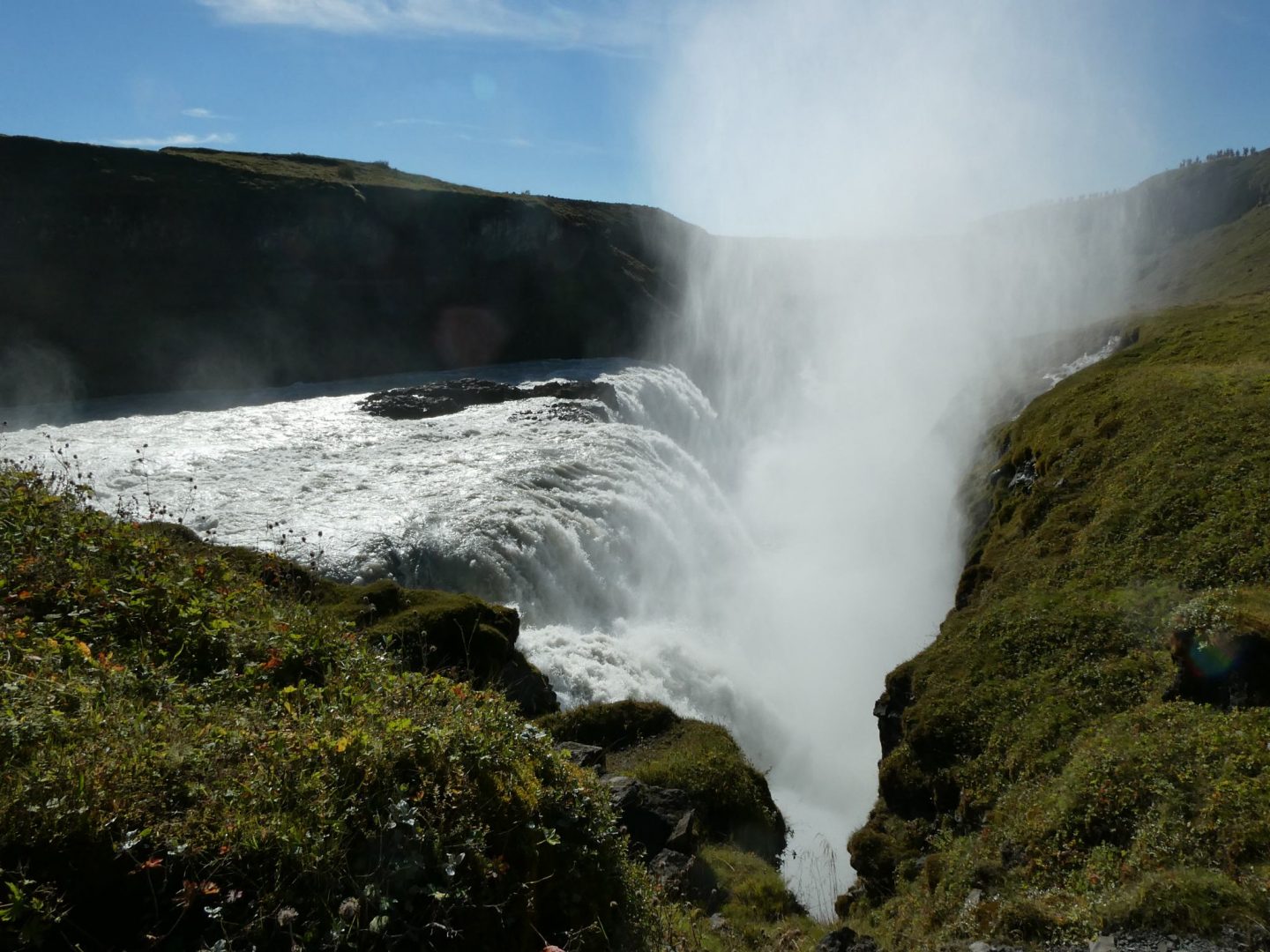 Gullfoss means ‘golden falls’.  An Icelandic naturalist recorded in his travel journal in 1790 that locals told him they were named for a farmer named Gygur who lived near the falls long ago. He had a lot of gold coins and could not bear the thought of someone else possessing them after he died.  So he placed them in a chest and threw the chest into the waterfall.  What a mean spirited individual.

Other explanations are that it is because the falls acquire a golden tinge at sunset or because a rainbow can often be seen as the sun strikes water spray from the falls.  Just like this. 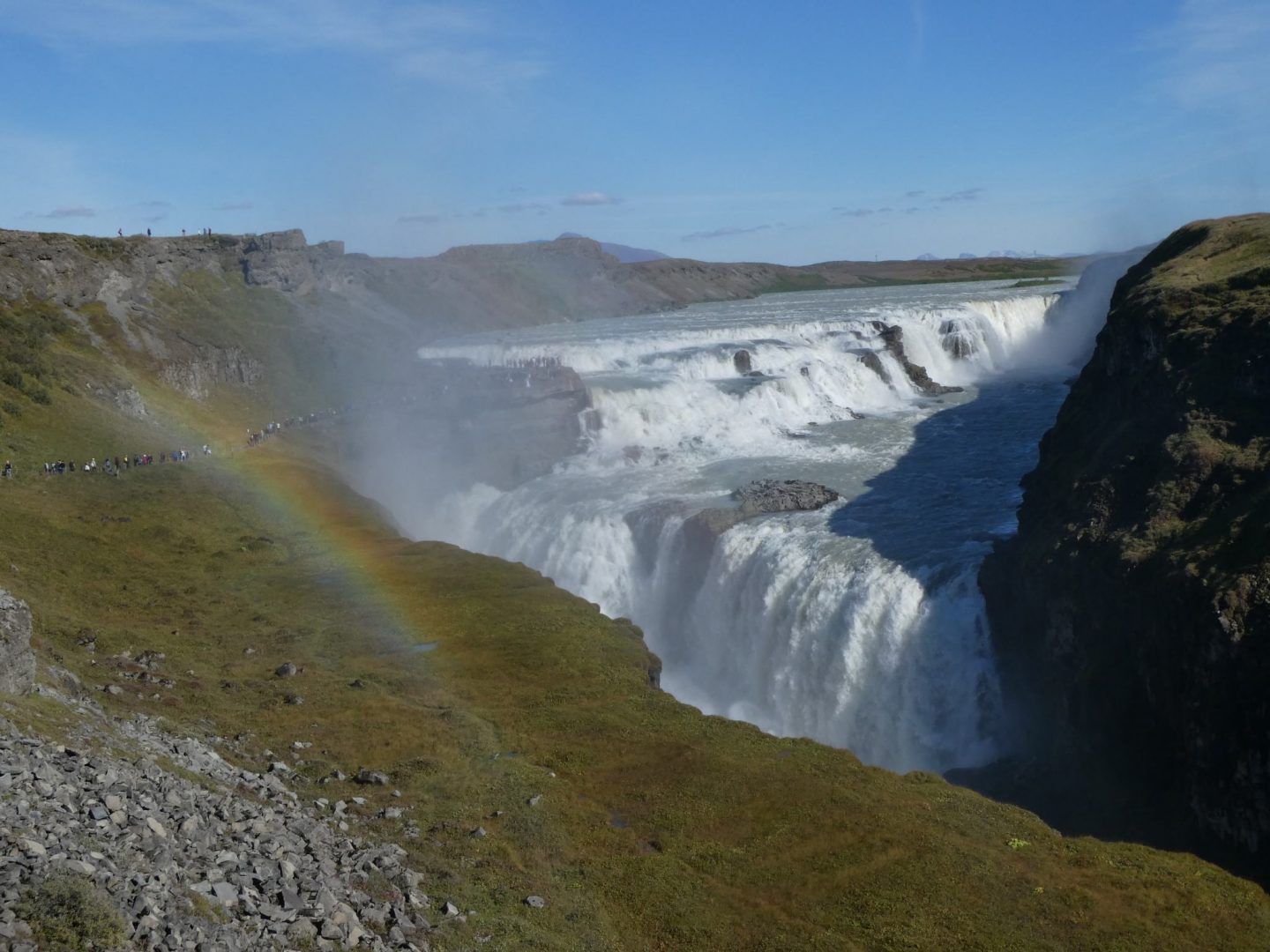 There’s a trail that goes down to an overlook level with the top of the falls.  Yes, you will get wet. But look closely at the people on the rock ledge and you’ll get some perspective on how big the falls are.

After the falls it was time for a warmer soak.  As we said in the post about Reykjavik, Iceland is famous for its thermal waters.  They are not all the same.  There’s the ‘day spa’ type experience like Blue Lagoon and then there’s the rustic one.  Hruni is one of the latter.  The water here is not geothermal.  It’s rain water that heats up as it runs over volcanic rock, then emerges above ground as a stream of running water.

At Hruni, a farmer built a stone pool in 1890 for his family and the local community to use for bathing and doing laundry.  Later, a turf roofed hut was added, probably for washing sheep. 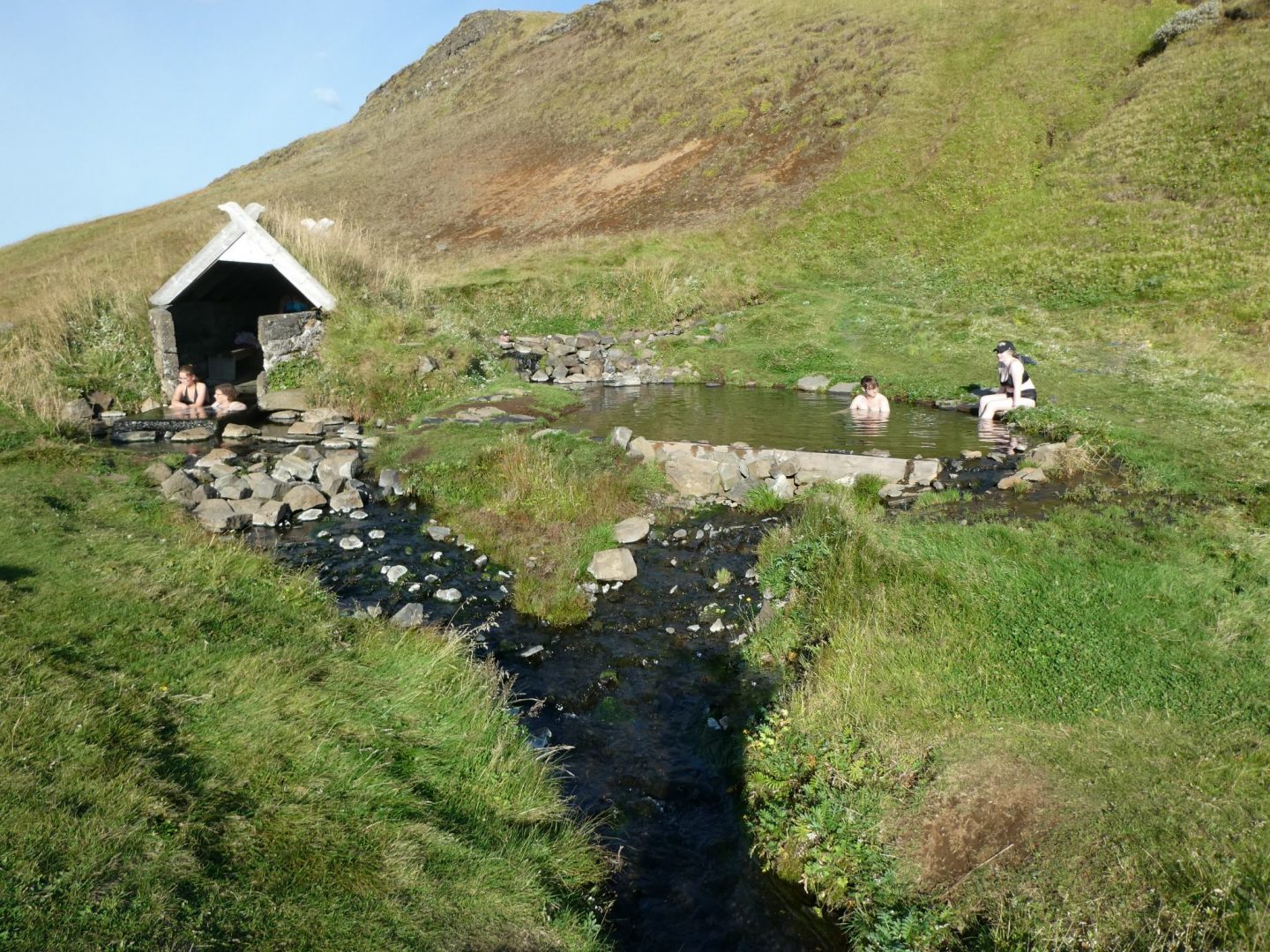 Because it’s quite remote and on private land, until the last decade or so, it was rarely visited by tourists.  But between 2017 and 2021, the stone pool was renewed and the bathing hut repaired.  Visitors are now welcome.  Thankfully, they don’t wash clothes or sheep here anymore!

It’s an idyllic location and the water is near to perfect at about 38 degrees Celsius.  On a relatively warm afternoon, lounging in the water was soooo relaxing. 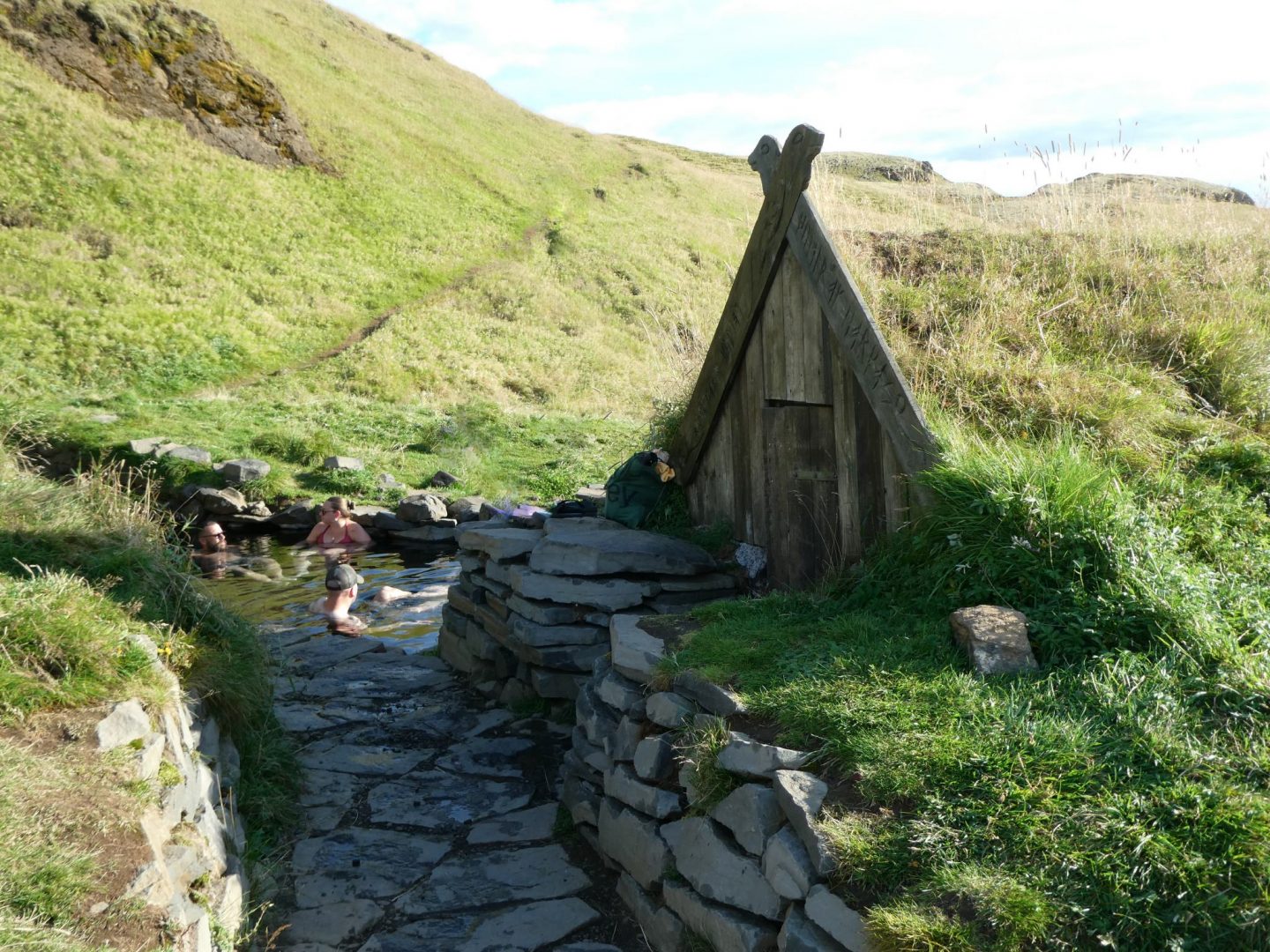 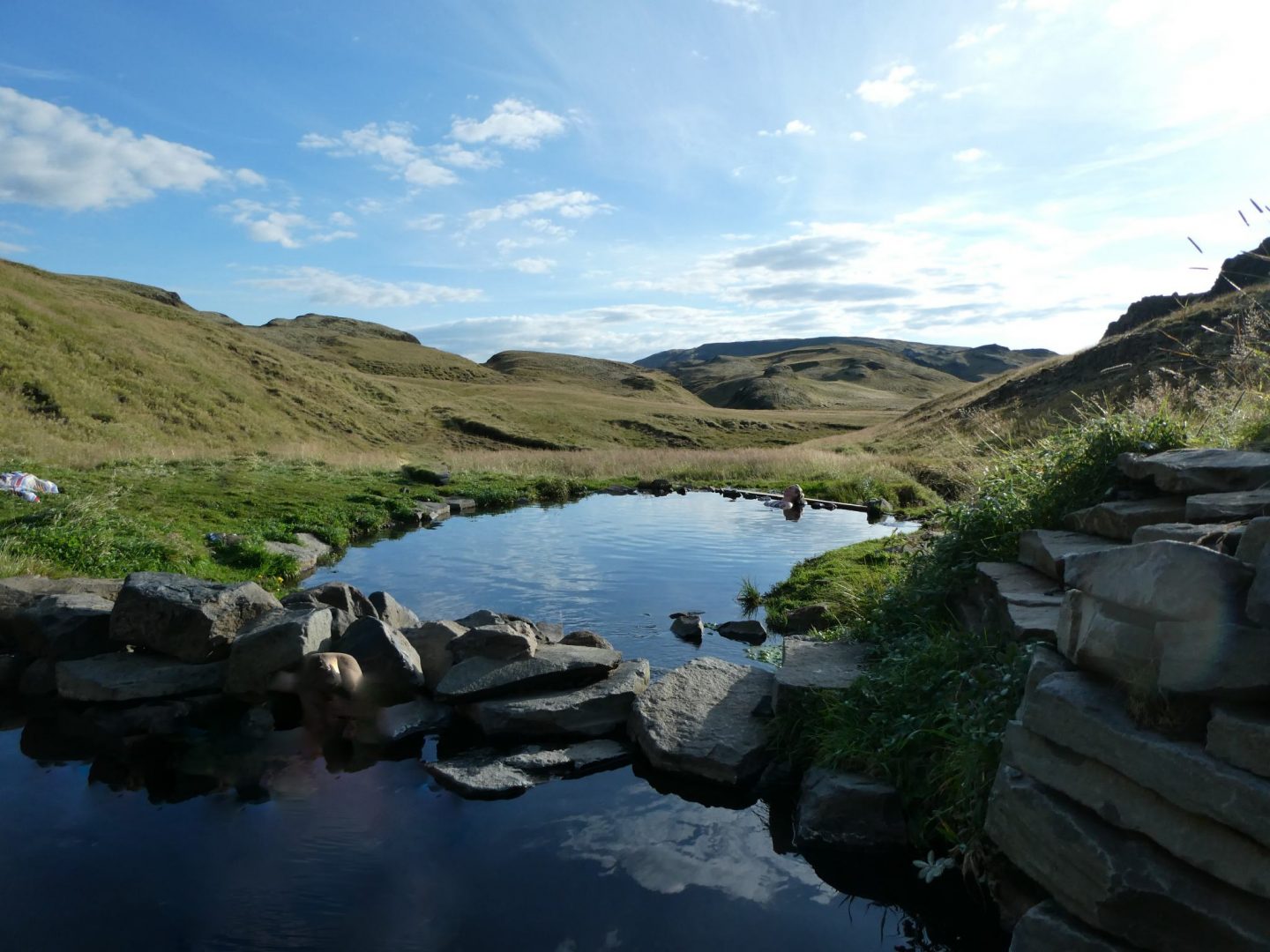 We also stopped at the Kerid crater.  Formed about 6,500 years ago, it’s a 270 x 170 metre volcanic crater, 55 metres deep in which a lake has formed.  It’s unique amongst crater lakes because the crater wasn’t built up by magma during an explosion.  Rather, the volcano emptied its magma reserve during an eruption and then the weight of the cone collapsed into the magma chamber.   So, for simple folk like us: it’s a big hole in the ground, not a mountain with a big hole in it.

The lake is in fact the same level as the water table and is not caused by rainfall being captured in the hole.

You can walk down to and around the shore.  Despite a sign forbidding swimming, we did see one lunatic in the lake.   We say ‘lunatic’ because it’s damn cold! 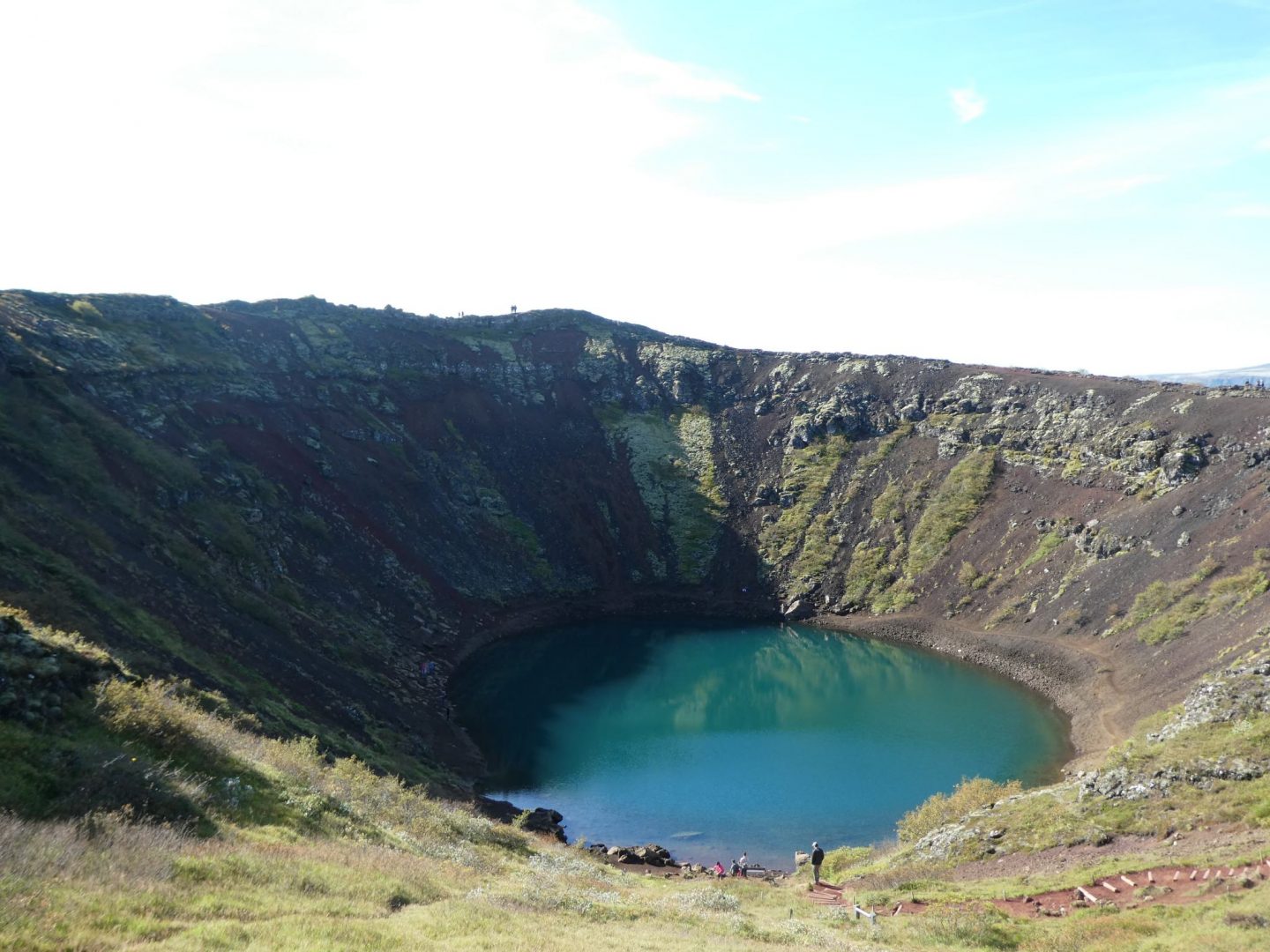 And then there’s the big one – Thingvellir National Park.  It was first declared a national park in 1928 to protect the site of Iceland’s first ‘parliament’.   As the power of the family of Iceland’s first settler, Ingolfur Arnarson grew, chieftains of other settlement groups felt the need for a general assembly to limit the family’s power and provide a centralised structure for the delivery of justice and the formulation of laws.  The first such assembly was held here in 930.  It was the beginning of a cohesive force necessary to forge a common cultural heritage between settler groups and a sense of national identity, and one of the first modern governing models with democratic elements.

Which is not to say it was necessarily ‘enlightened’ in the modern sense.  Near to where the assembly met is the drowning pool.  In the 1600s and 1700s, women condemned to death were tied up in a sack and held under the water until they expired. 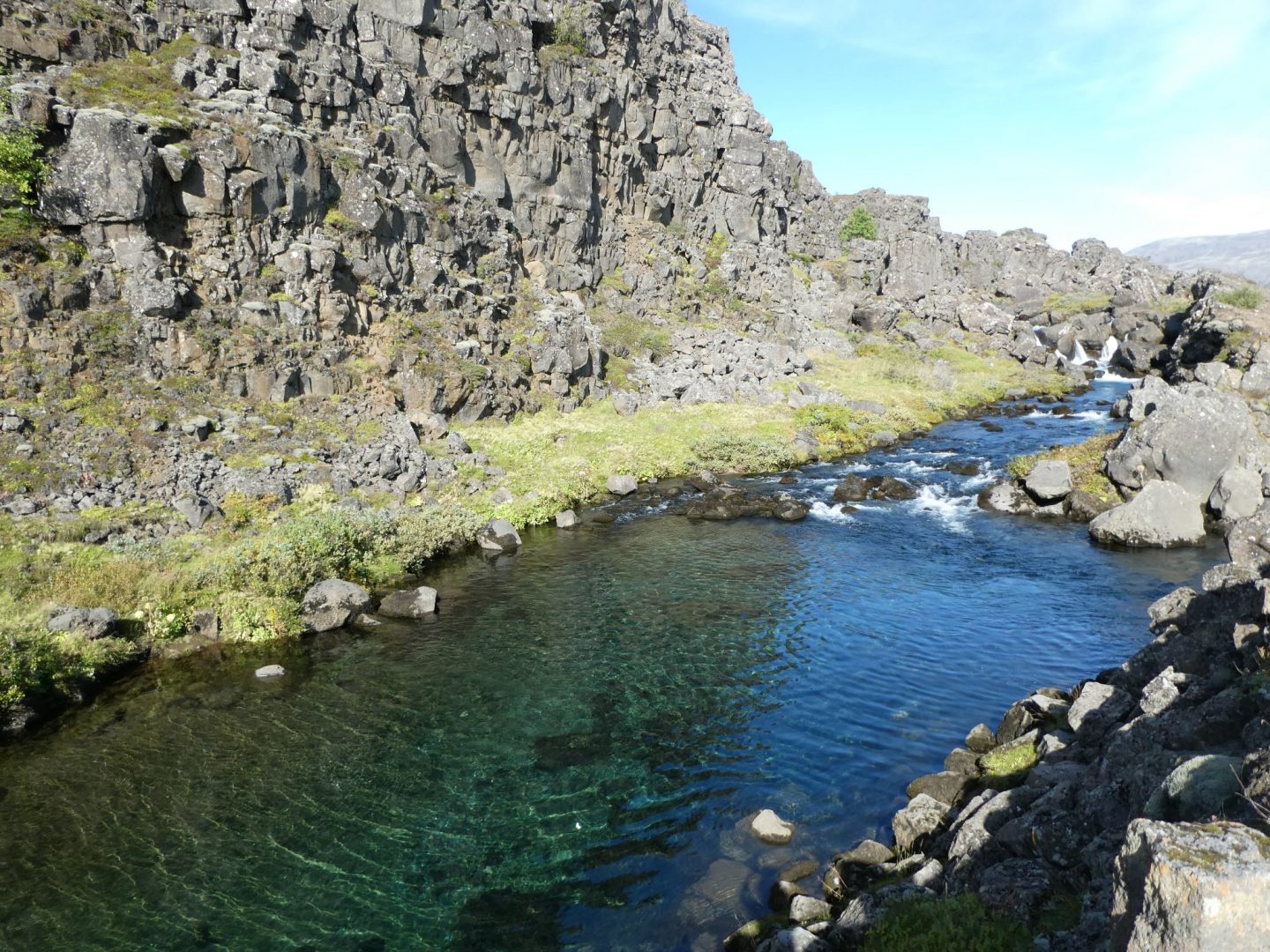 There’s also Scaffold Cliff, where thieves were hanged, and Execution Block Spit where offenders were beheaded.

The national park was later extended to encompass a vast area of geological significance, and was declared a UNESCO World Heritage Site in 2004.  The park lies in a rift valley  on the boundary between the North American and Eurasian tectonic plates.  Two continents meet here.  And they are slowly tearing away from each other, albeit at a rate of only 2.5cm per year.

For geologists, this area is a big deal because although the tectonic plates are vast, this is one of the few places on the planet where they are not deep underwater.  For the rest of us, it’s an opportunity, in a geological sense, to stand with one foot in each continent. 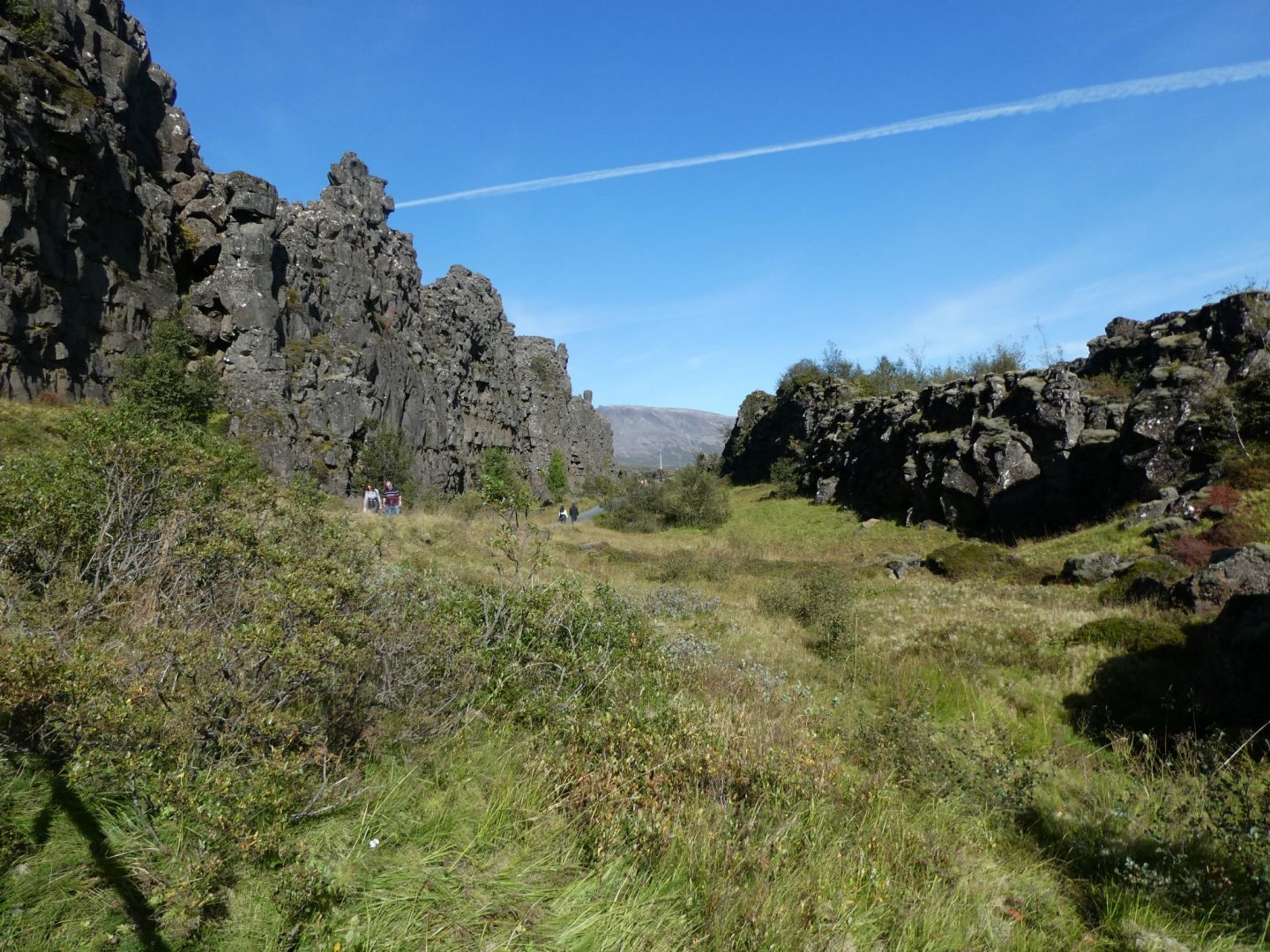 Part of the rift also runs under a system of waterways.  The Silfra Fissure opened up in 1789 and is filled with glacial meltwater so pure that if you snorkelled or scuba dived in this channel the visibility is 100 metres plus. 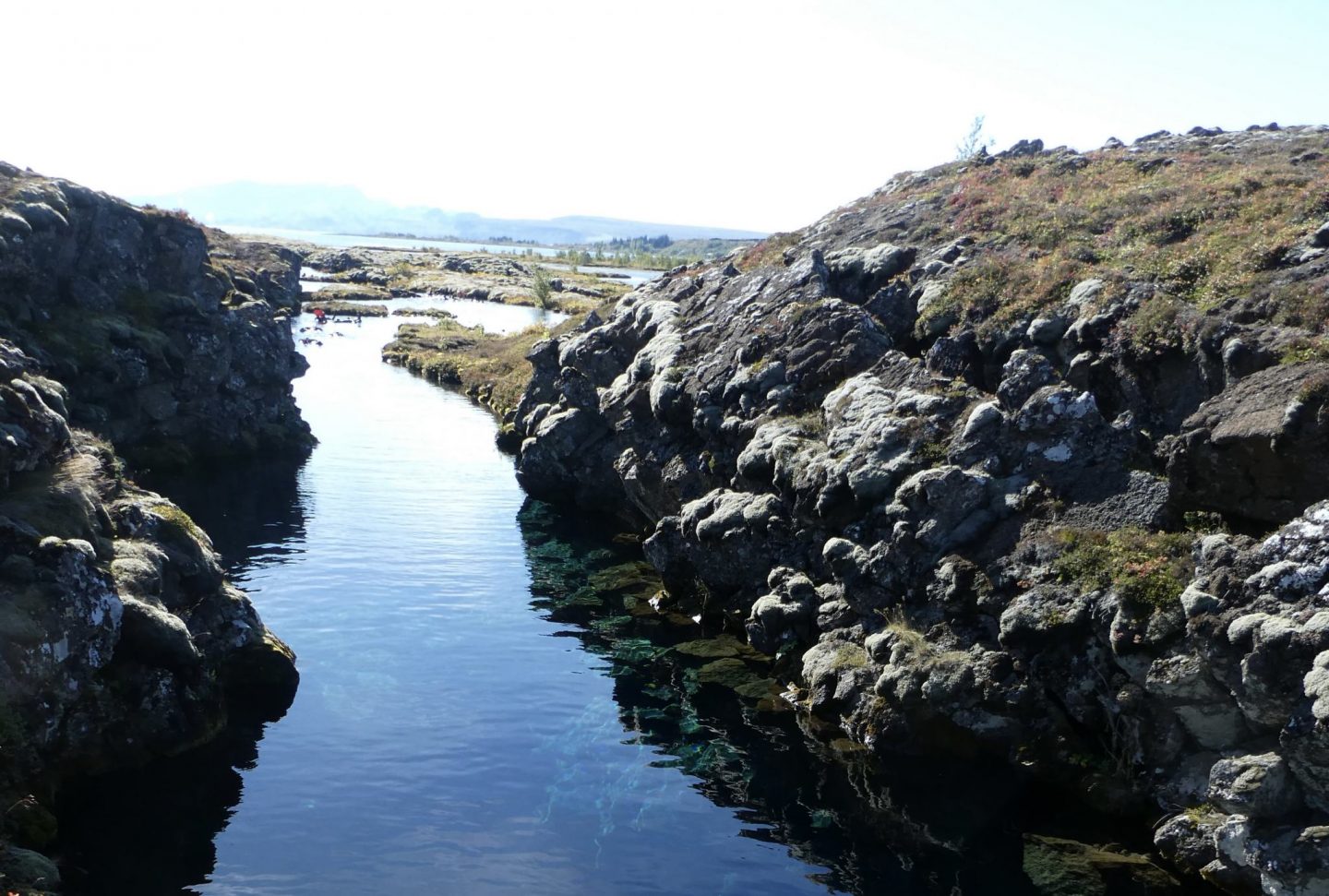 For big dramatic landscapes and a showcase of the power of nature, Iceland can’t be beaten.  When we left Australia in 2018 on our first post-retirement travels, Iceland was high on our list.  But without a plan, travel ADHD set in.  Two years and 34 countries later, we returned home without getting there.  And then of course there was Covid.  We weren’t going to let it happen again.  And we didn’t.  Iceland done!