Estonia’s transformation over the 30 years since it regained independence in 1991 in the wake of the collapse of the USSR is nothing short of remarkable.  Unlike many of the ‘stans’ to the east, there was no chance of some former Soviet apparatchik establishing autocratic rule here.  Estonia immediately embraced real democracy and pivoted west. Swift, radical reforms switched the country to a market economy, with privatisation free of the corruption which has bedevilled Russia and many other former SSRs.

Surprise, surprise, it worked!  Estonia has one of the lowest levels of government debt in the EU, an independent and efficient legal system, low taxes and a liberal free trade regime.  It was admitted into the EU and NATO in 2004.  The literacy rate is over 99% and unemployment is one of the lowest in Europe, albeit there remains a significant disparity between rural incomes and those in the capital, Tallin.

Since regaining independence much money has been poured into restoring Tallin’s heritage buildings.  And what a great job they’ve done. 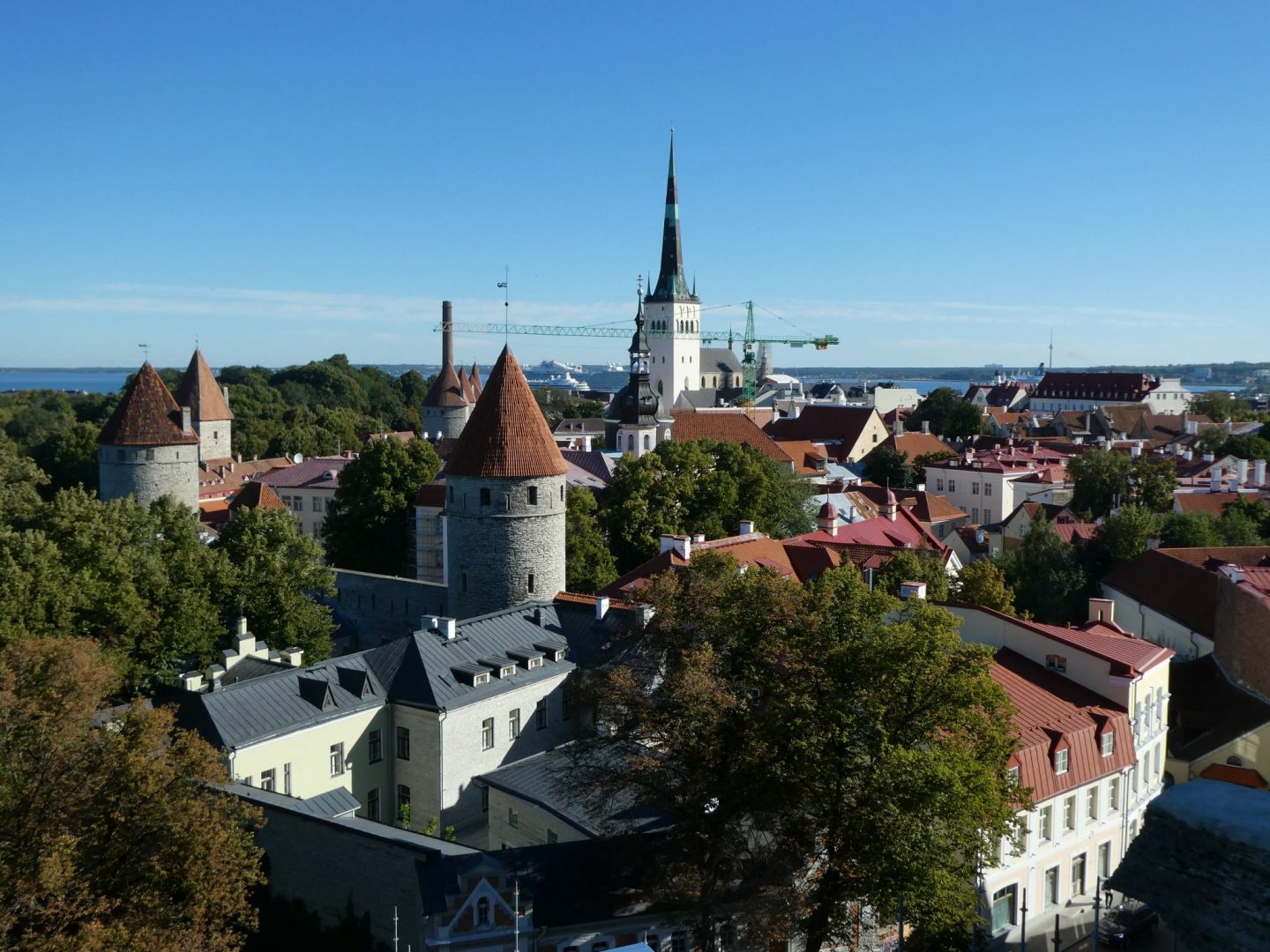 Tallin rose to prosperity in the Middle Ages as a port for trade between the medieval states in the Gulf of Finland and Russia to the east, and those in what are now Denmark and Germany. It was built as a walled city for defence and with the restoration, it’s one of Europe’s most complete walled towns. 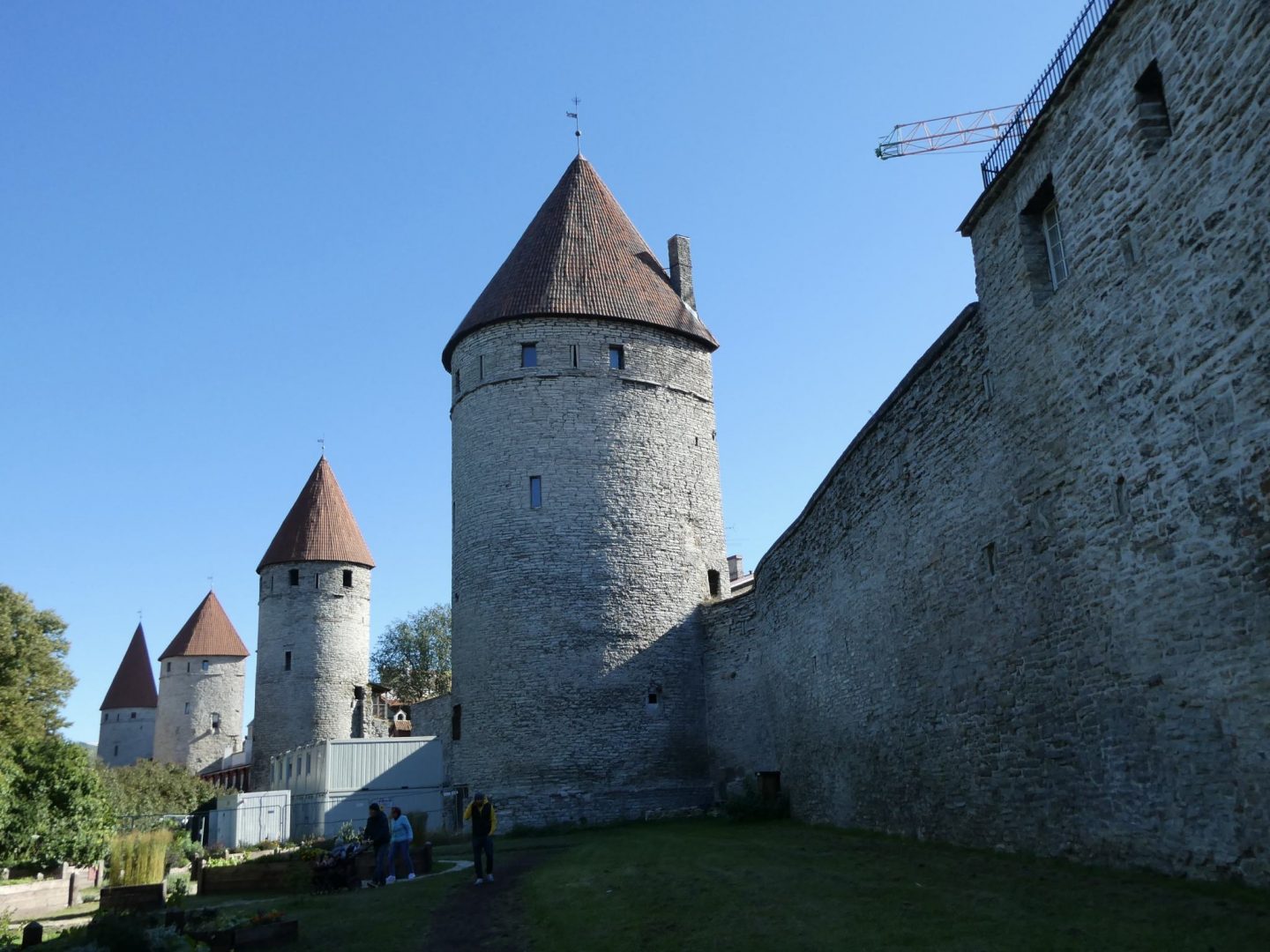 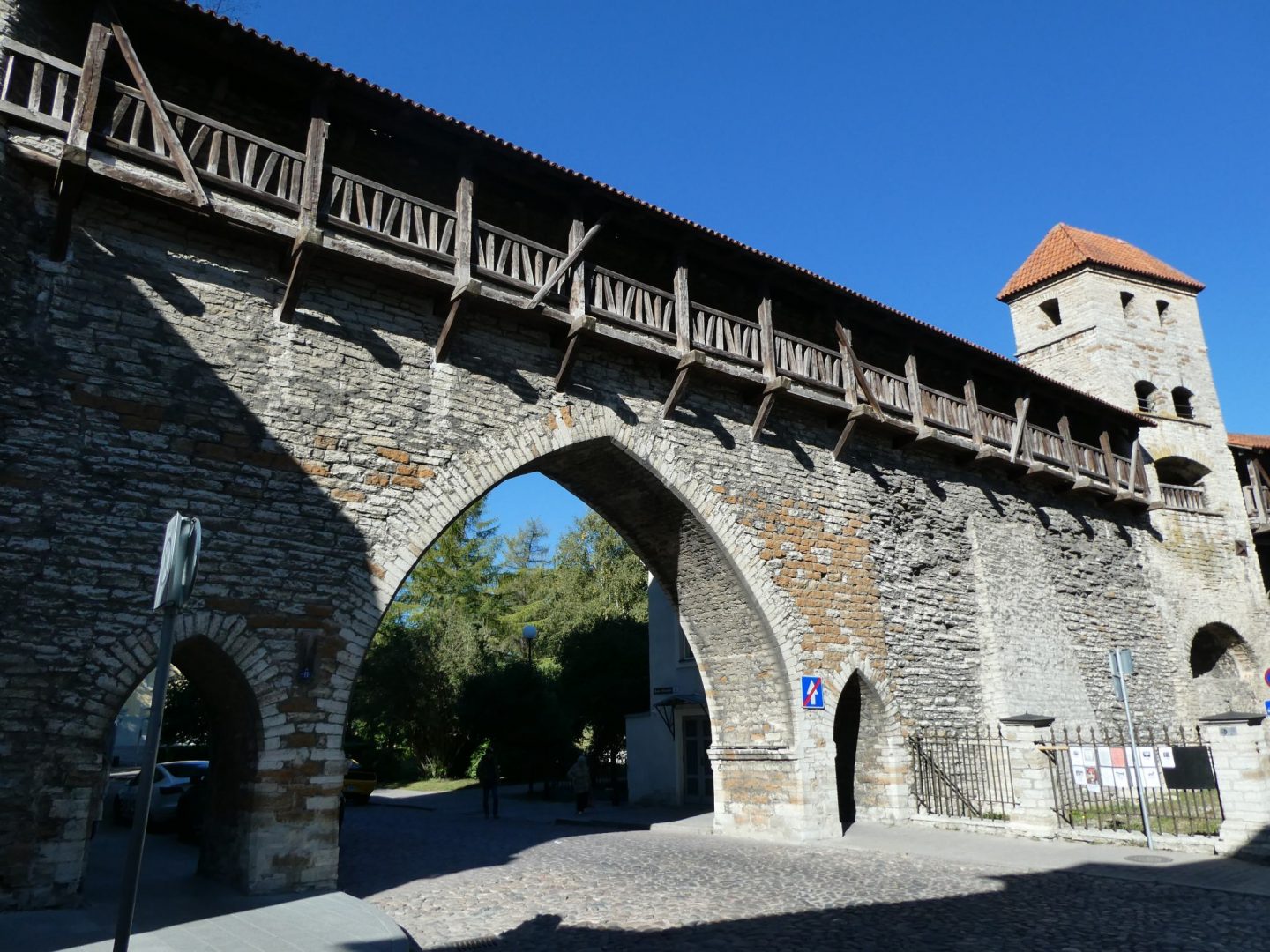 By the mid 1400s Tallin was one of northern Europe’s biggest towns and many craft and business guilds were operating.  The Brotherhood of Blackheads was formed here in 1343. No, not a bunch of pimply youths.  A guild of unmarried male merchants with the African-born Roman martyr, Saint Maurice as their patron.  According to tradition, in 1441 during Christmas revelry, members ran out into the snowy forest and returned with a spruce tree which they decorated, set alight and capered around as it burned.  The practice of erecting a decorated tree at Christmas continued, although the burning part was abandoned.  And that, according to some, is the origin of the Christmas tree. The Blackheads’ guild house still stands. 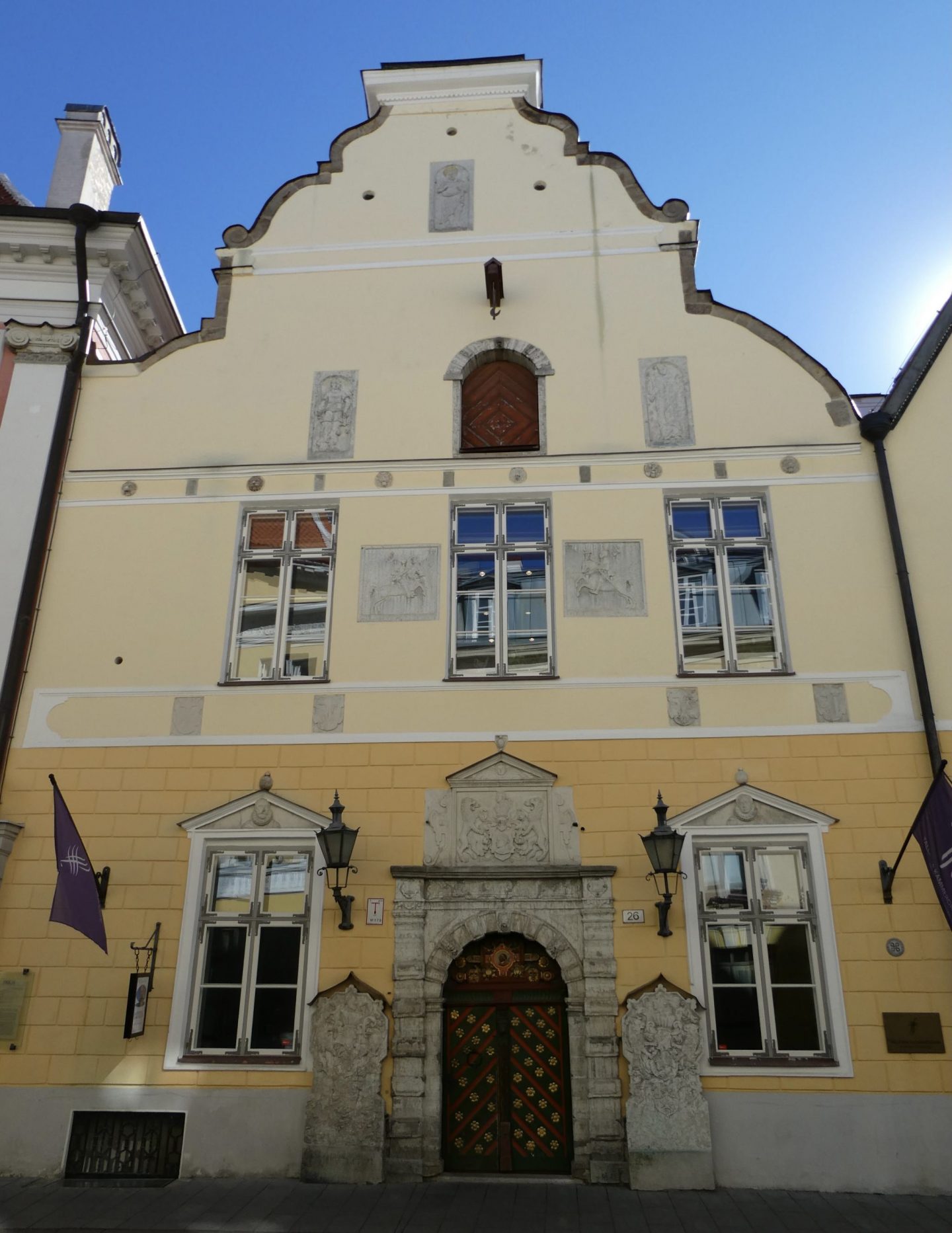 Also formed in the 1300s, St Canute’s Guild included a number of associations of fine craftsman.  Its guild hall is more recent, built in 1860 with zinc statues of Martin Luther and the guild’s founder, Knud Lavard. 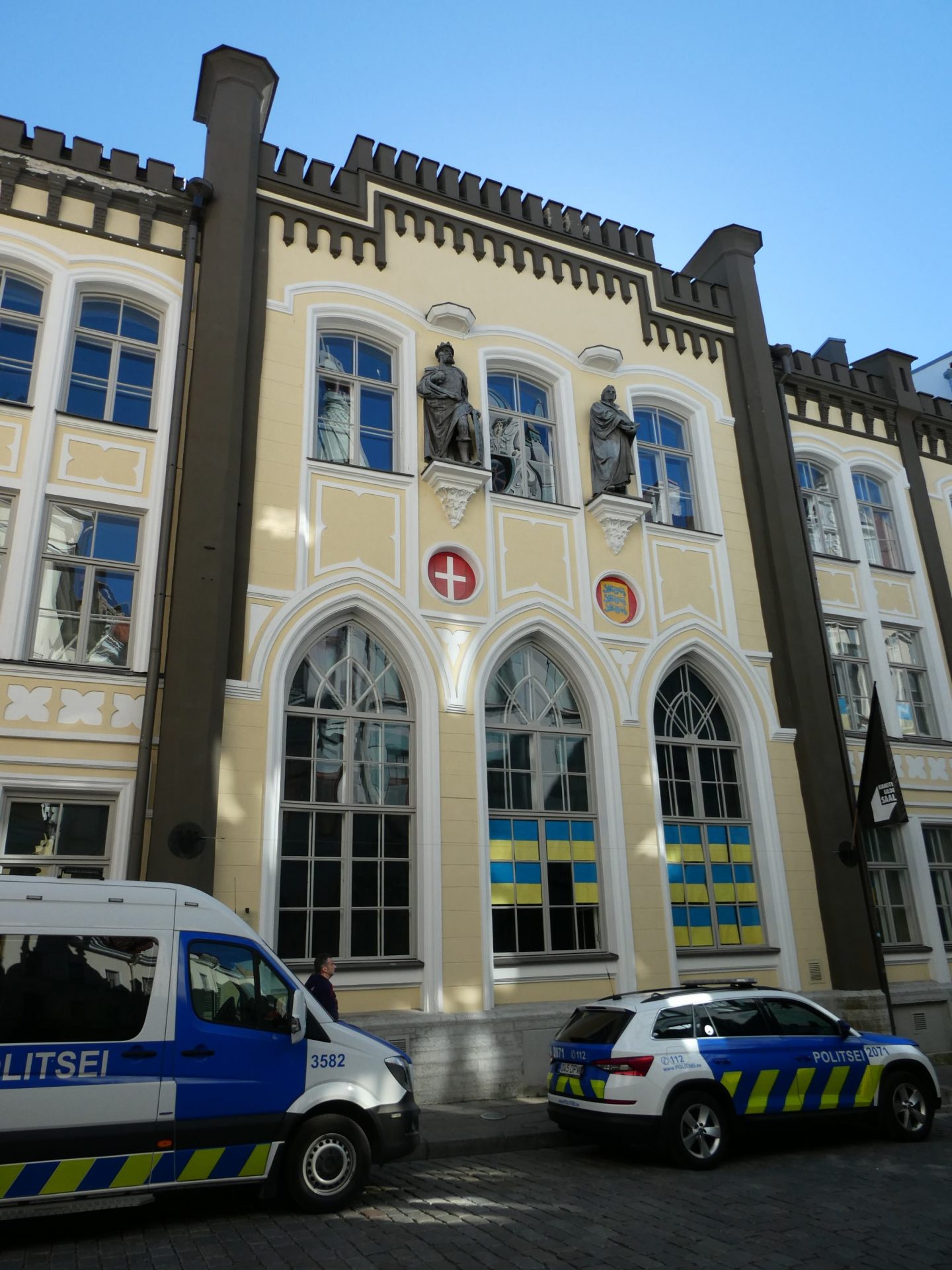 Tallin Town Hall was built in 1404 and is now the last remaining Gothic town hall in Northern Europe.  It’s delicate and very un-Gothic tower is said to have been based on a sketch of a minaret made by an explorer who’d visited the Orient. 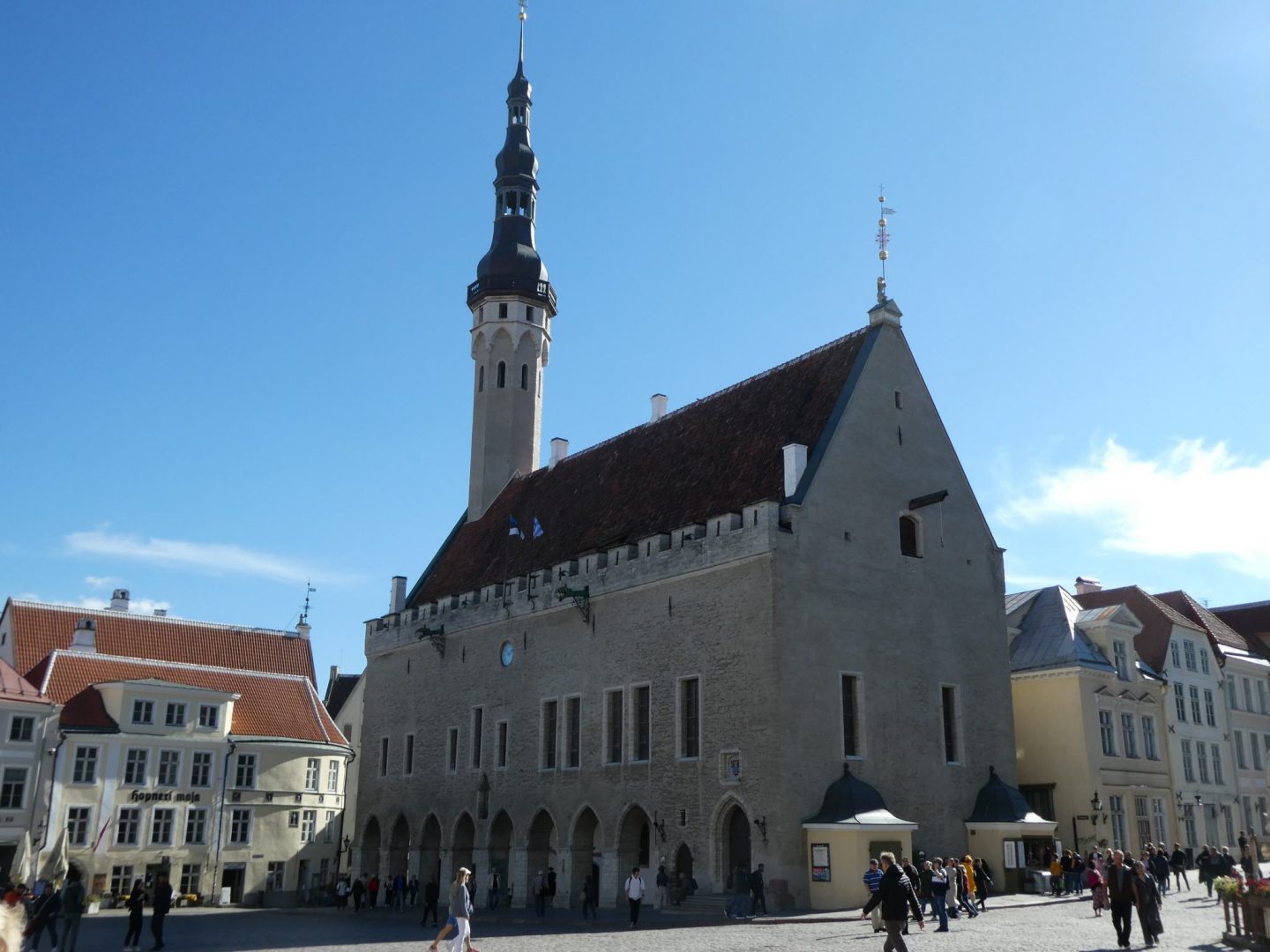 The pharmacy on the opposite corner of the town square has been operating since at least 1422, making it the oldest continually operating pharmacy in Europe.  From 1583 to 1913 it was run by 10 generations of the Burchardt family, all with the name Johan. In those days, it sold claret and marzipan as cures for headache.  It still operates as a pharmacy, with more modern products on hand, and a small museum of historical medical paraphernalia. 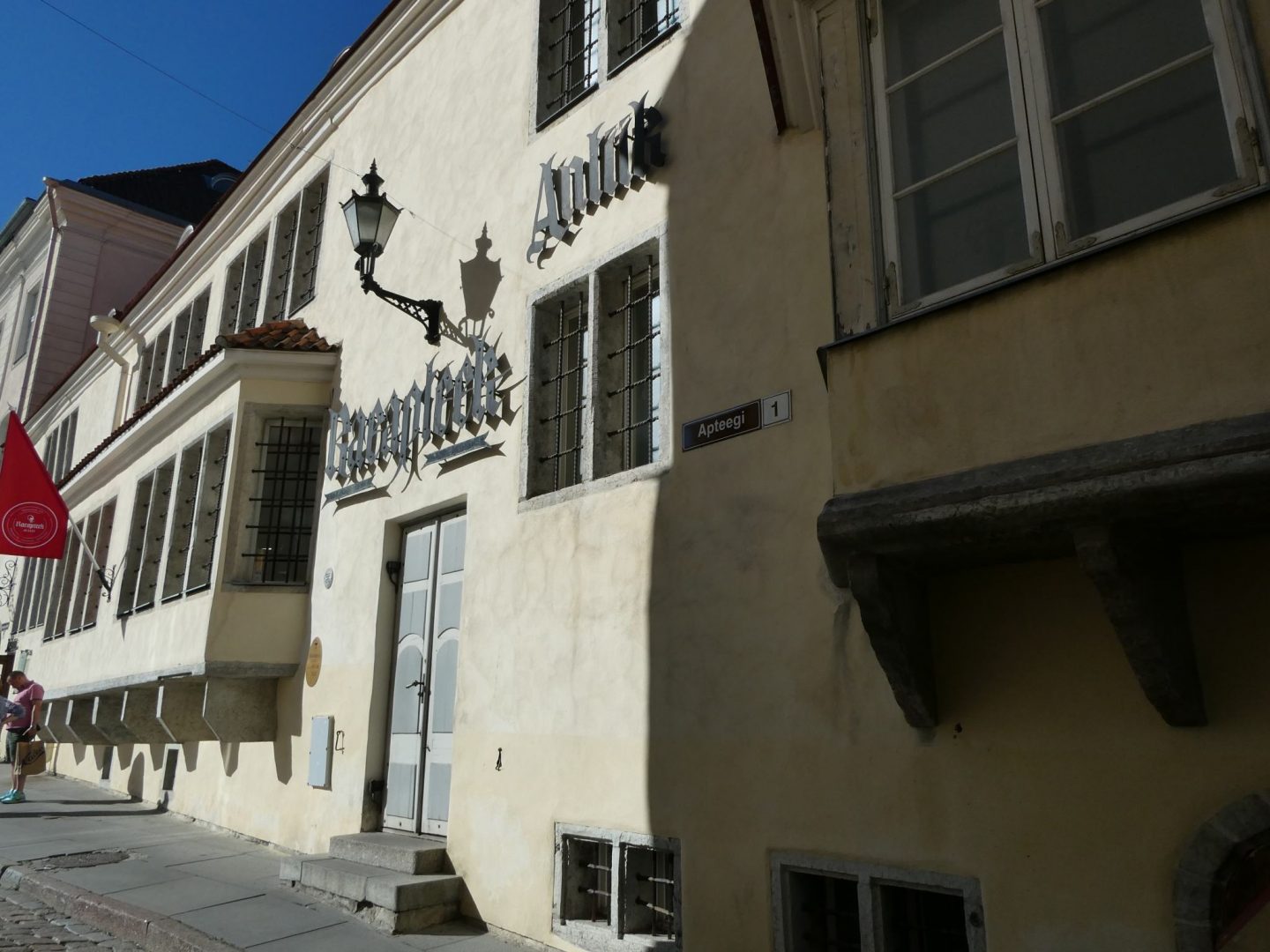 By the end of the 1600s Tallin had been under the yoke of empire for centuries – Danish, Polish, Teutonic and Swedish.  In 1710 its then ruler, Sweden was losing a long war with Russia.  Weakened by war and the plague, Tallin, together with the rest of what is now Estonia, Latvia and part of Lithuania, capitulated and were absorbed into the Tsardom of Russia.

The Russian Orthodox Alexander Nevsky Cathedral was built in 1900 as Tsarist Russia proceeded with its ‘Russification’ of the Baltics.  Stamping its authority on the town, it was the biggest, most elaborate church around. It was hated by many Estonians as a symbol of Russian oppression. 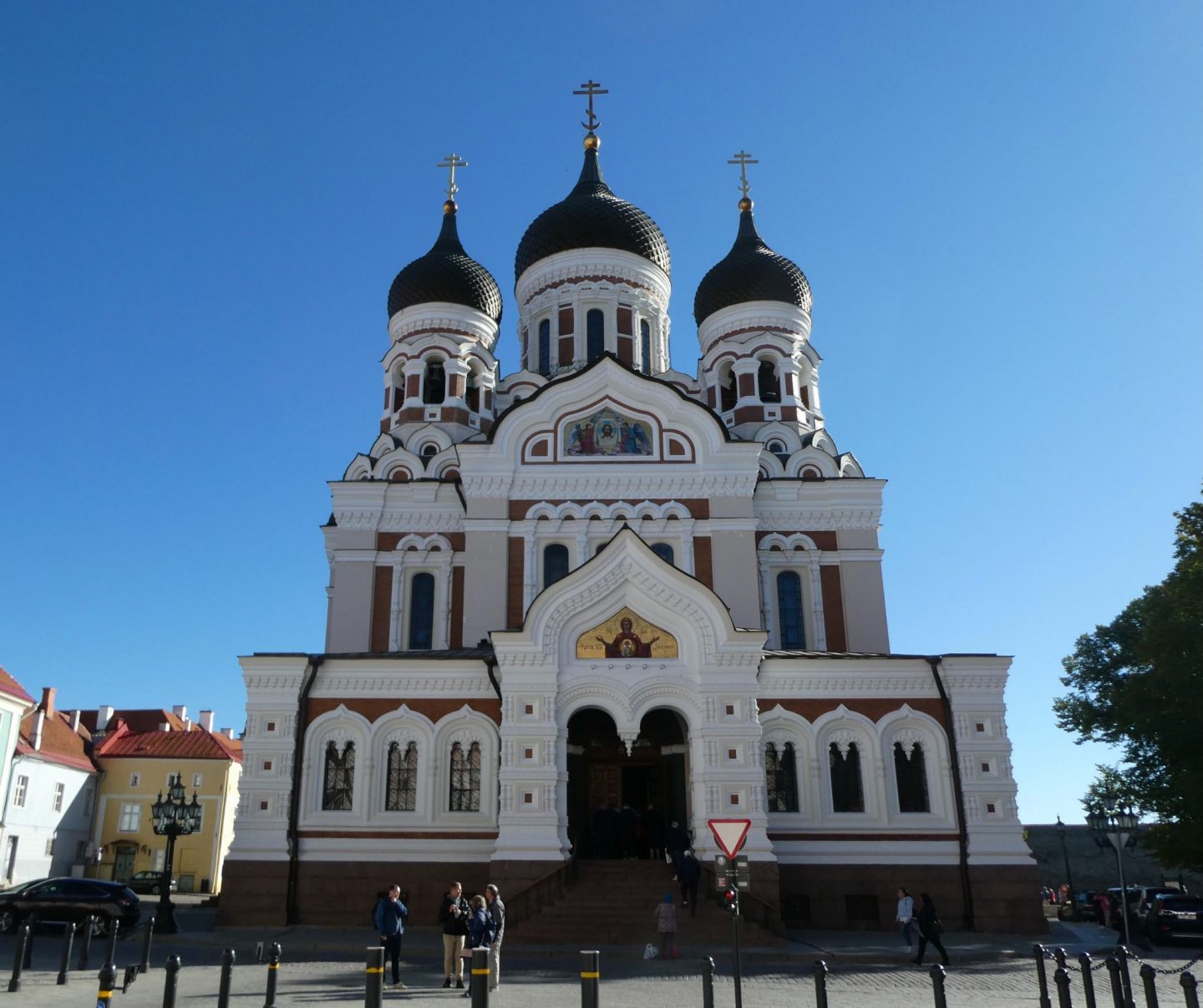 In 1918, with Germany and Russia at war with each other, and the Russian Revolution ousting the Tsar, Estonia declared independence.  The Bolsheviks disagreed and after Germany was defeated, invaded Estonia.  But they were repelled and under the 1920 Tartu Peace Treaty, Russia agreed to permanently give up all sovereign claims to Estonia.  Estonia had won it’s freedom.

But it proved to be short lived.  In 1939 Russia threatened to invade unless Estonia allowed it to place military bases in the country, give the Red Army free passage and replace the democratically elected government with a pro-Soviet Prime Minister selected by Russia.  With no international military support, Estonia had no option but to capitulate.  In 1940, Russia went one step further and annexed Estonia as the Estonian SSR.

In July 1941, the Germans invaded and quickly occupied Estonia.  Some hoped this ‘liberation’ from the Soviets would lead to re-establishment of independence, but the Nazis had no such plans.  By the time the Soviet army pushed the Germans out again in 1945, 20% of Estonia’s population had been killed, deported or had fled as refugees.

The oppression was only just beginning.  With the return of Russian rule, Soviet-installed police arrested almost anyone associated with the independence movement. Of the 12 heads of state of the independence period, one escaped to Sweden.  All others were either executed or died in prison.  6% of the total population fell victim to Soviet political repression during the 1940-41 occupation and between re-occupation at the end of WWII and Stalin’s death in 1953.

Many were held in Paterai Prison, a former naval fortress built in the 1800s just outside central Tallin.  The crumbling ruin is now a museum, a permanent testament to the harsh conditions in which prisoners were held in those years. 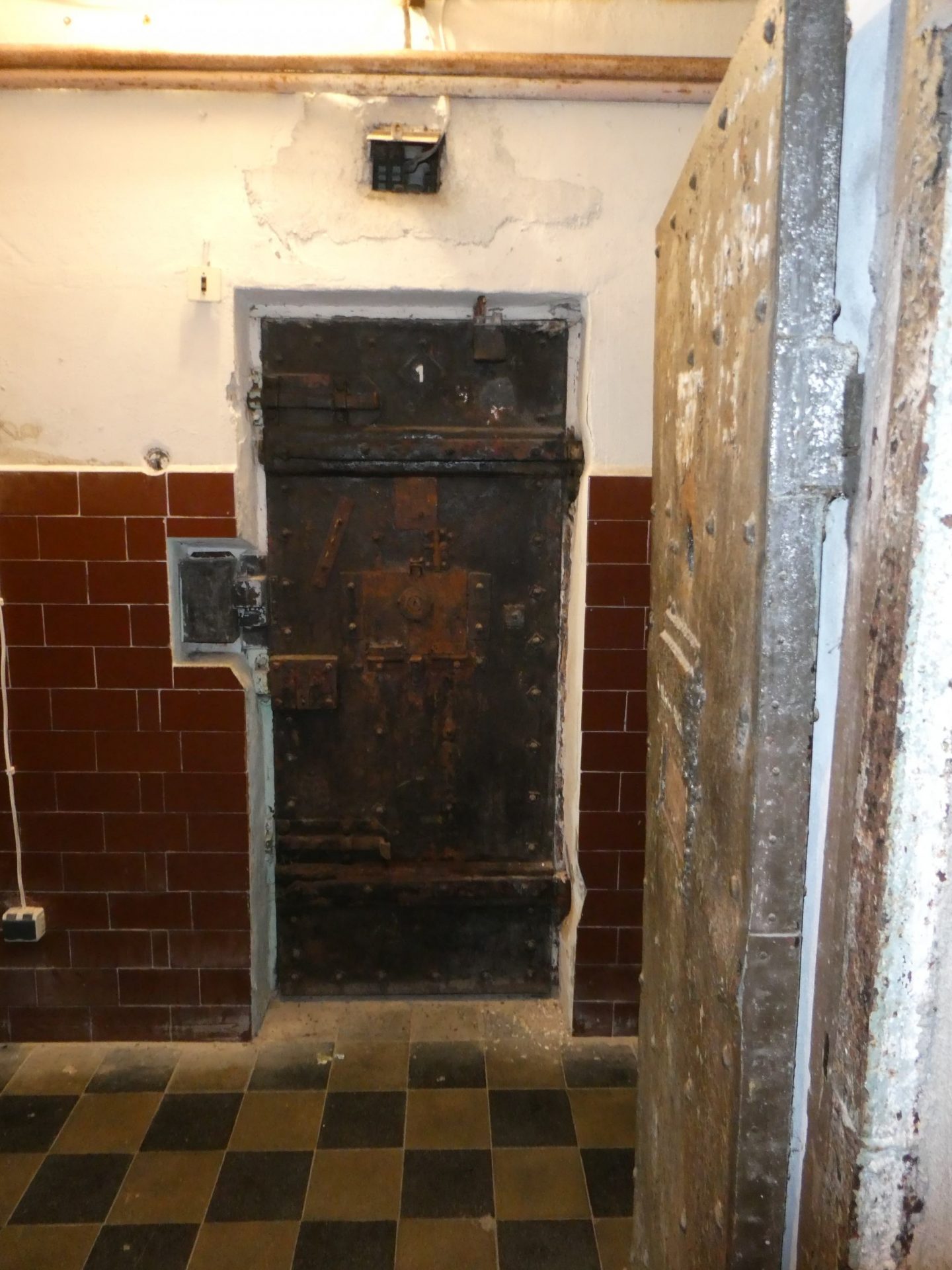 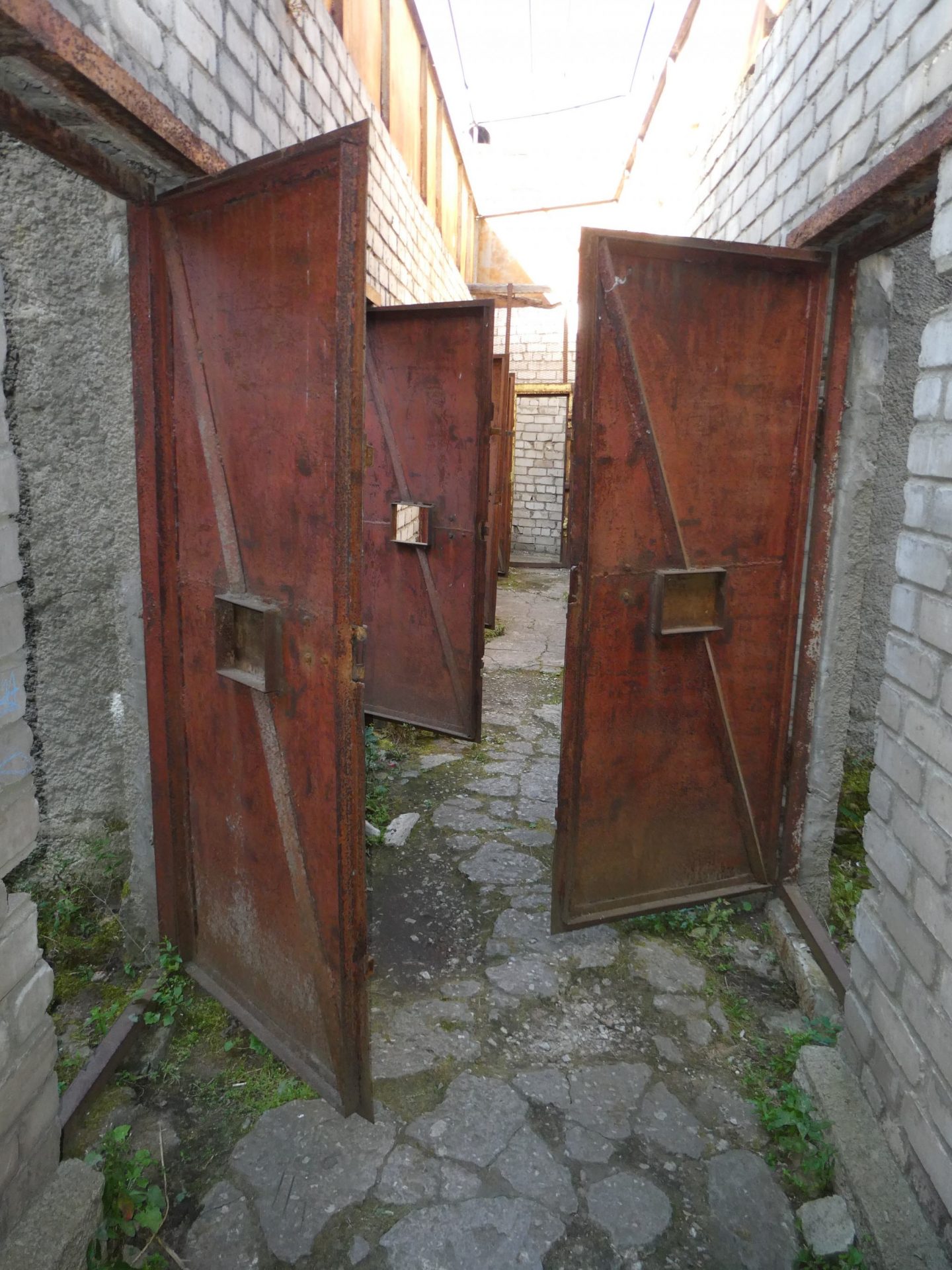 Even after the death of Stalin, the country suffered terrible repression.  Farmers who resisted collectivisation were deported to Siberia.  Intellectuals and students were surveilled, arbitrarily arrested and charged with offences for little more than ‘wrong thinking’.  The KGB operated a detention and torture centre right in the Old Town, now the KGB Prison Cells Museum which chronicles the violence of incarceration here.  The basement level windows were bricked up so people on the street couldn’t hear the screaming.  But locals with dark humour would say it had the best view in Tallin – you could see all the way to Siberia.

For ‘softening up’, some prisoners were locked in cells so small they could only stand and almost suffocated from lack of air. 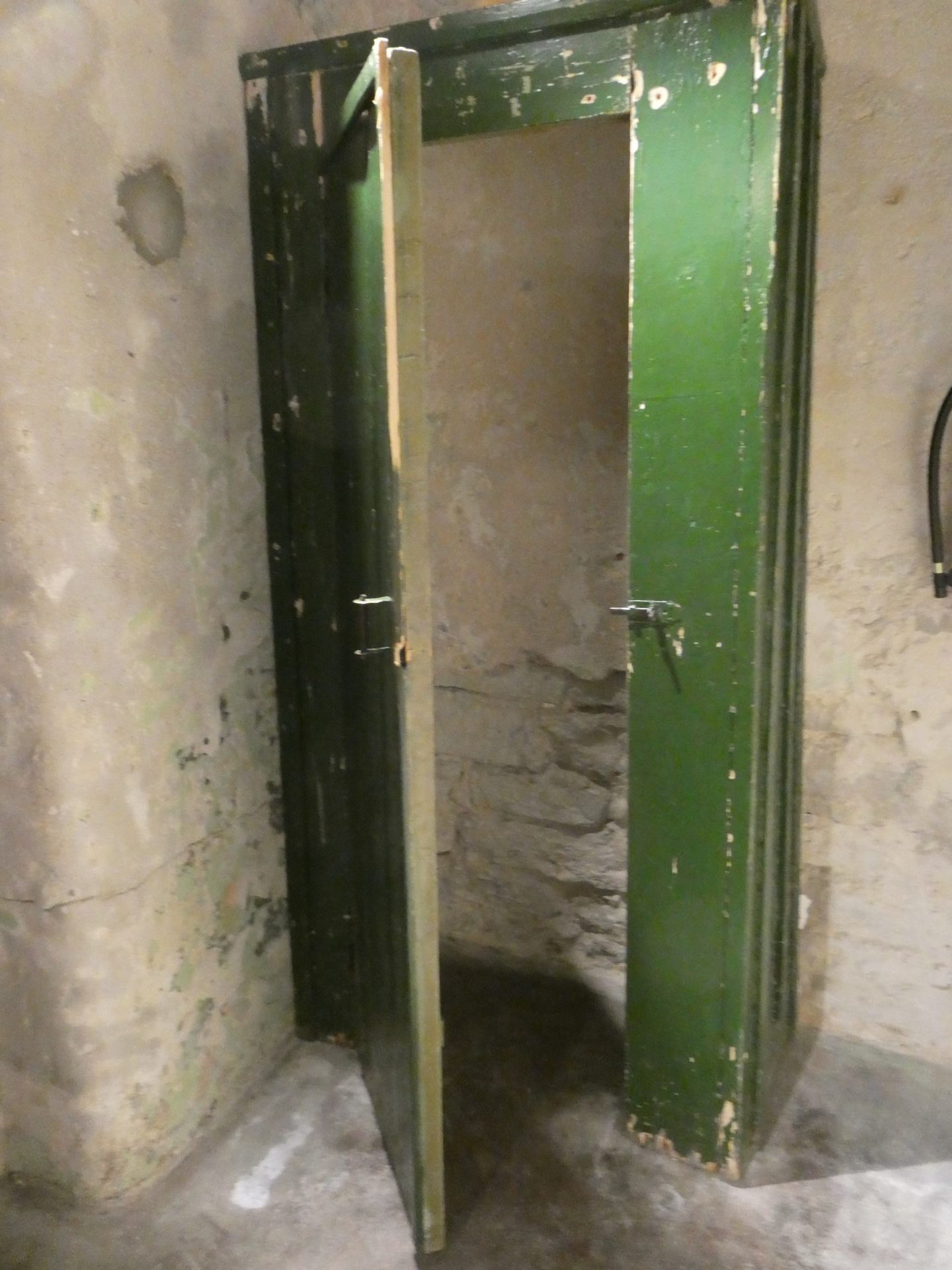 Once again, the Russians embarked on a program of ‘Russification’, destroying any Estonian memorials to the war dead and erecting many monuments to themselves.  A particularly offensive one was the Maarjamae War Memorial erected in 1960 to commemorate Soviet soldiers who died in the 1918 war against Estonia. Surprisingly, it’s still there. 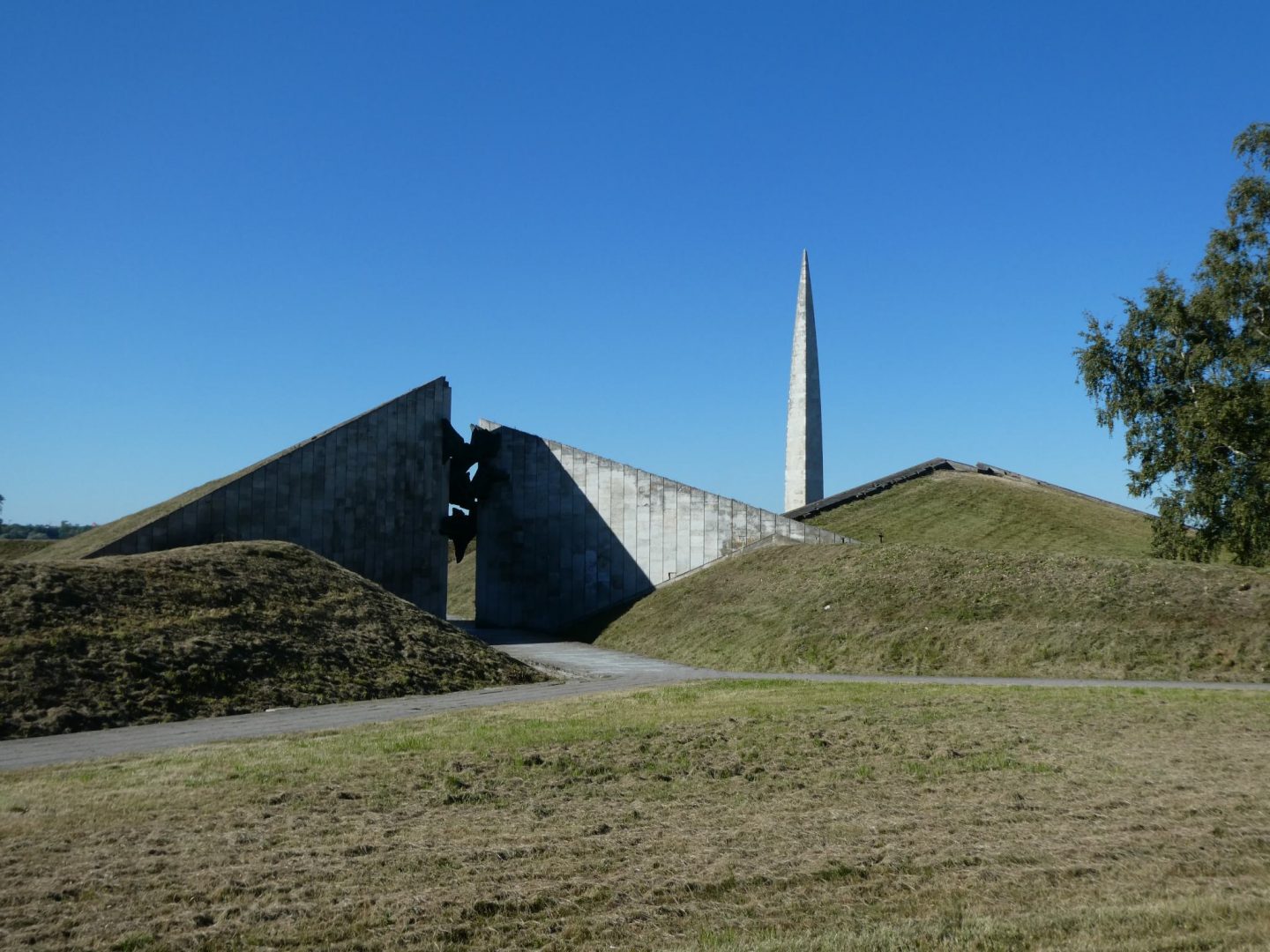 But in what we hope was a flipping of the bird to their former masters, the Soviet memorial is crumbling into disrepair while a new and bigger memorial has been built alongside it – a ‘Memorial to Estonia’s Victims of Communism’.  A plaque records that more than 75,000 Estonians were murdered, imprisoned or deported.  22,000 were sent to prisons outside the country, mostly Siberian camps, and never returned. 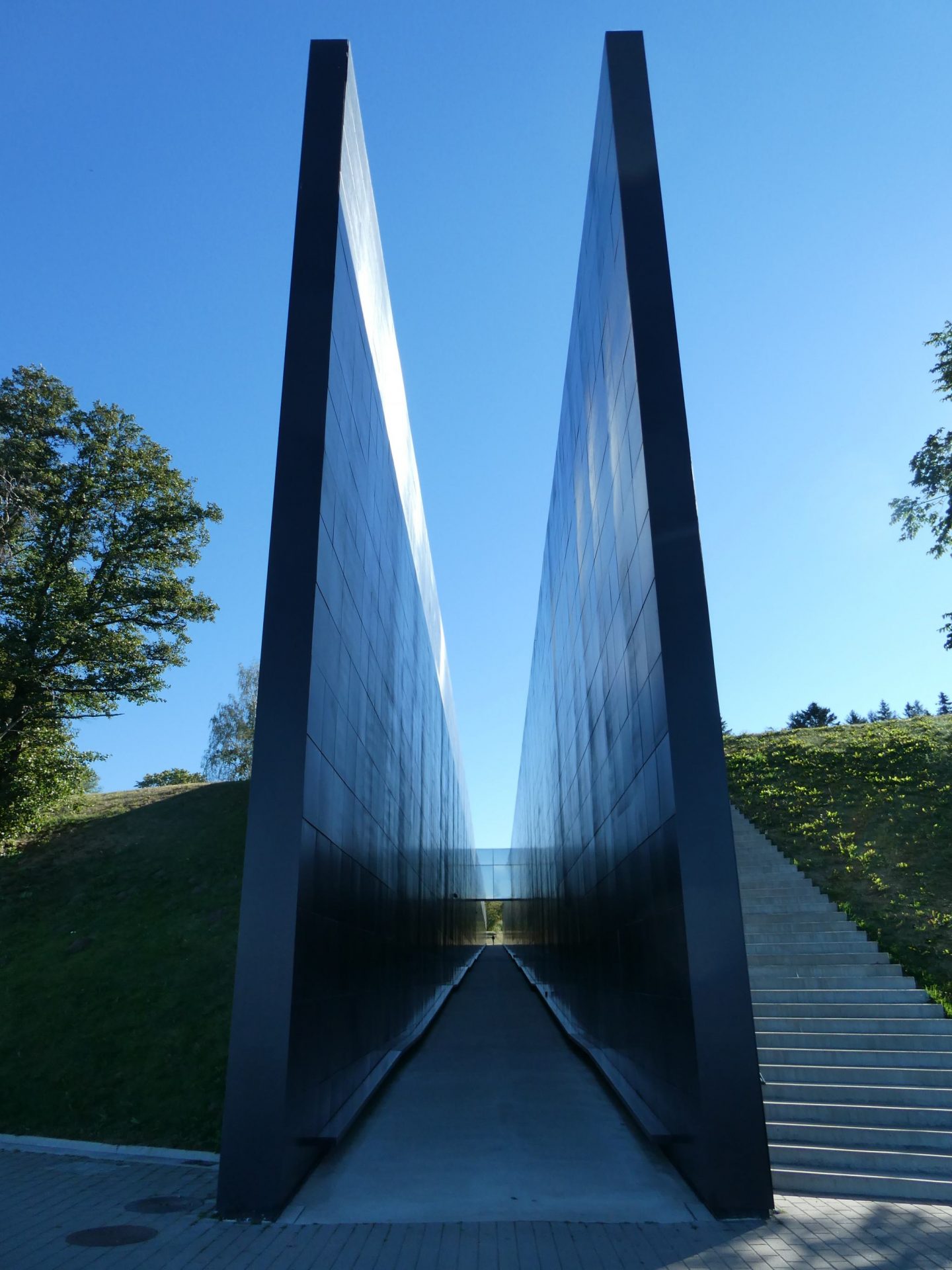 The policy of perestroika introduced by the Gorbachev administration in 1987 opened the way for political activity in the SSRs and triggered independence movements in all the Baltic states.  In a moment that captured the world, on 23 August 1989 about two million Estonians, Latvians and Lithuanians linked hands to form the Baltic Way, an unbroken human chain which stretched 690km across all three republics.  It didn’t happen immediately but under pressure from the West and reeling from it’s own internal problems, Russia capitulated.  By the end of 1991 all three were free.

As mentioned, newly independent Estonia immediately turned west.  As well as economic and political reform, it quickly removed overt symbols of Soviet domination, including by removing statues specifically celebrating communism.  Some have been collected into a curated exhibition in the grounds of the history museum.  There’s some larger than life statues of Lenin, or at least parts of him.  This one stood in the Palace of Culture and here’s a funny story.  Lenin once said that “communism is Soviet power plus the electrification of the whole country” but when the Palace was opened with a play about Lenin, the power failed just as the actor started to give the speech about electrification. 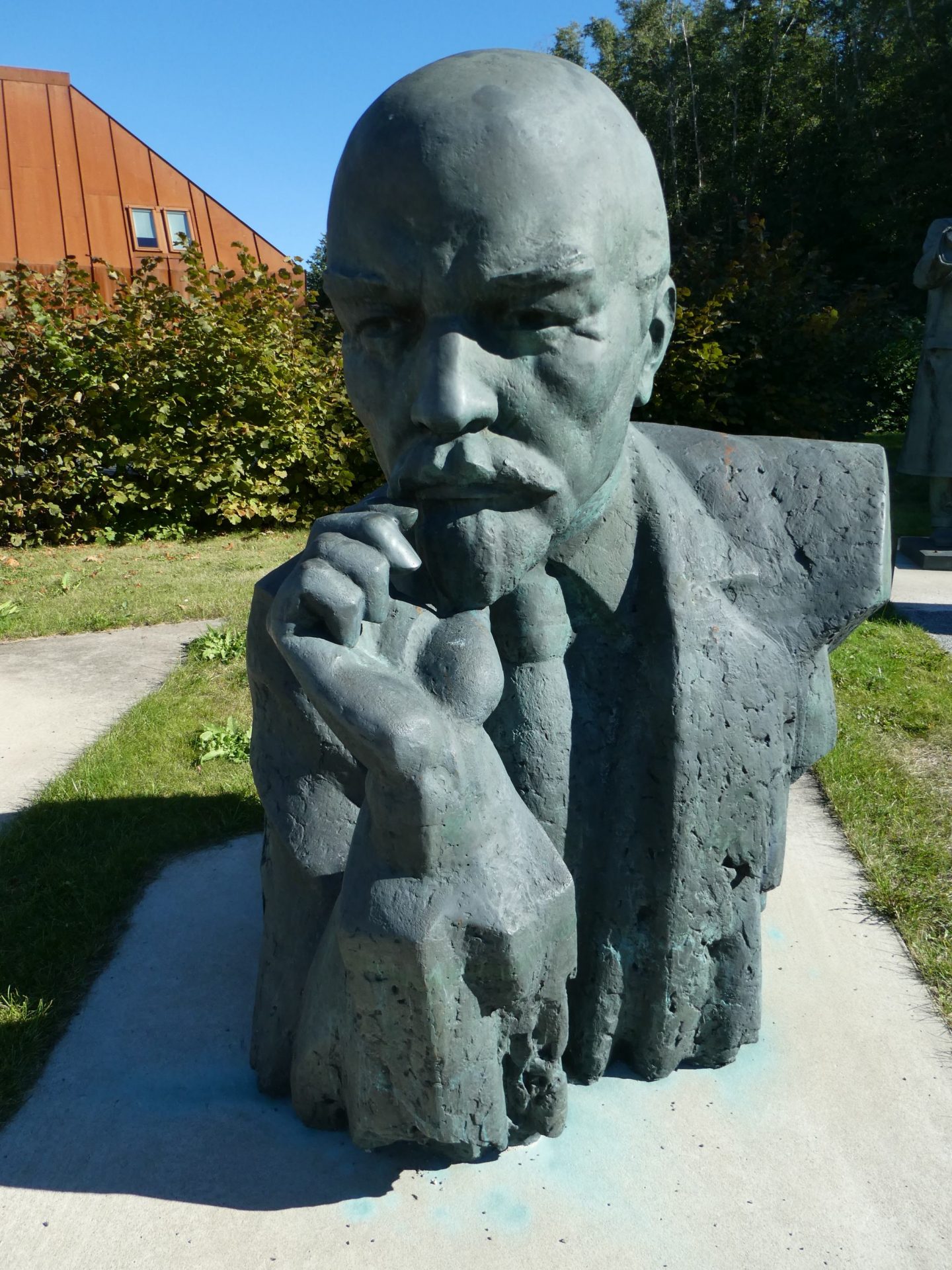 After Stalin died in 1953, his cult of personality was condemned and statues of him throughout most of the USSR were destroyed.  This one was placed in storage in about 1960 and forgotten about, making it one of only a small number which survive. 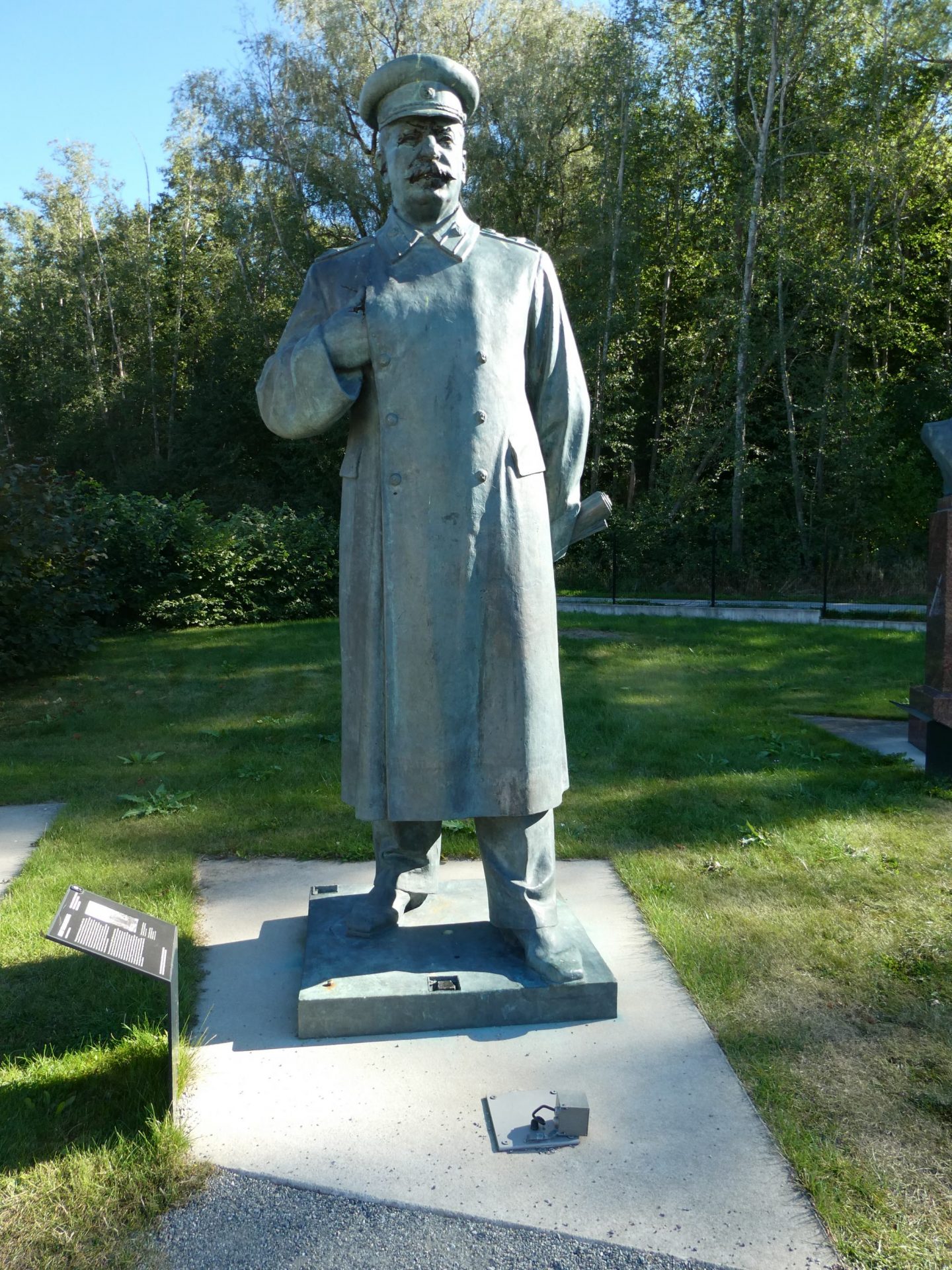 This next one had been erected in 1975 to ‘celebrate’ 30 years of Soviet rule in Estonia. It depicts armed workers and ‘the working people’s decision to win freedom’.  Locals derisively called it ‘Trying to Catch the Train to Moscow’. 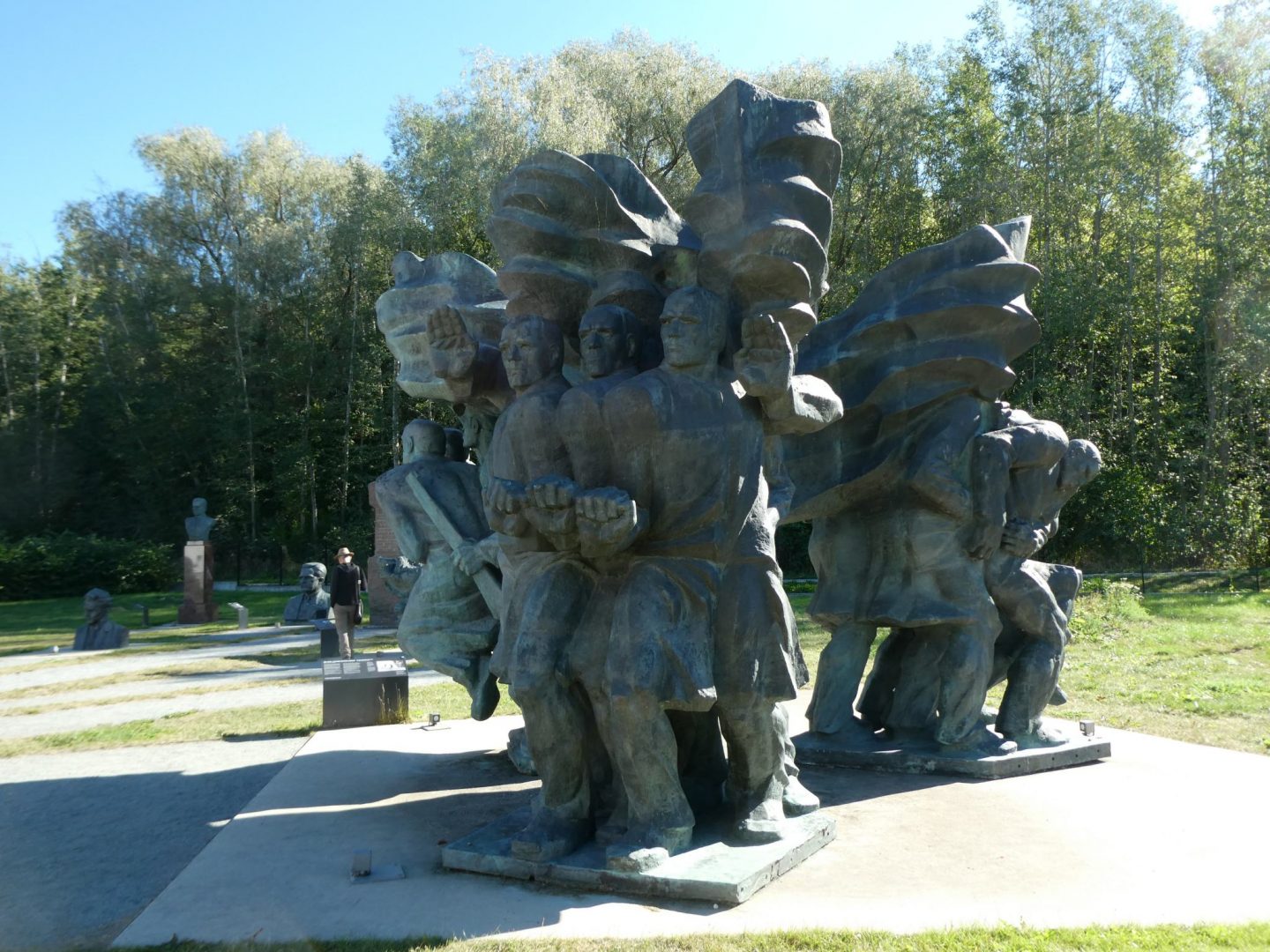 From a visitor’s perspective, it seems Tallin has done a good job of balancing a desire to remember its history with the need to move forward.  But clearly the past informs current perspectives – a country which secured a peace agreement with Russia guaranteeing its sovereignty only to be annexed a couple of decades later.  Sound like what Russia is attempting in nearby Ukraine right now?  Yes, the Estonians think so, too.

There’s highly visible support for Ukraine here.  Ukrainian flags hang from many buildings side by side with the Estonian flag.  Stickers and signs of support are everywhere.  An impromptu exhibition has sprung up outside the history museum condemning the Russian invasion. 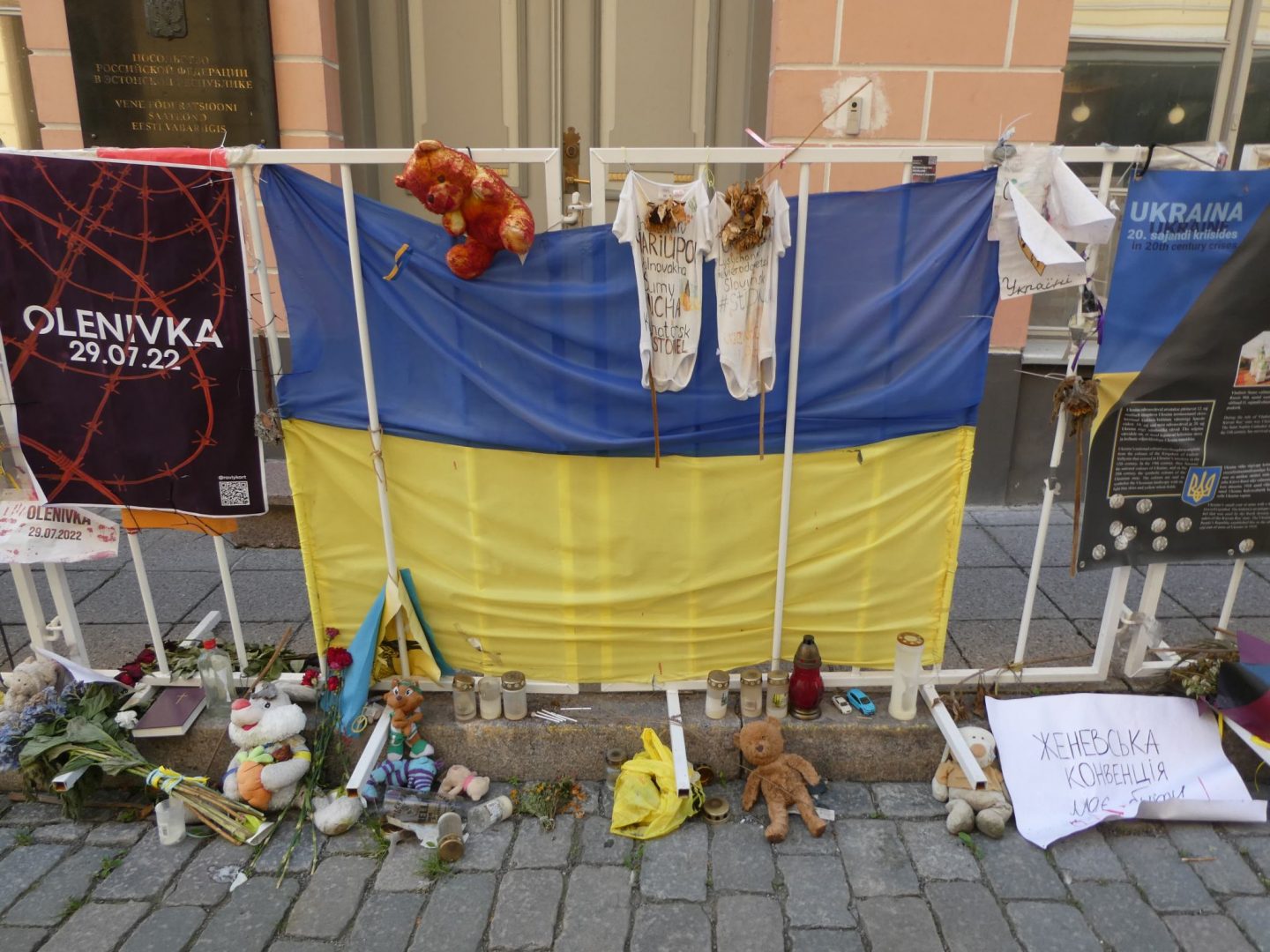 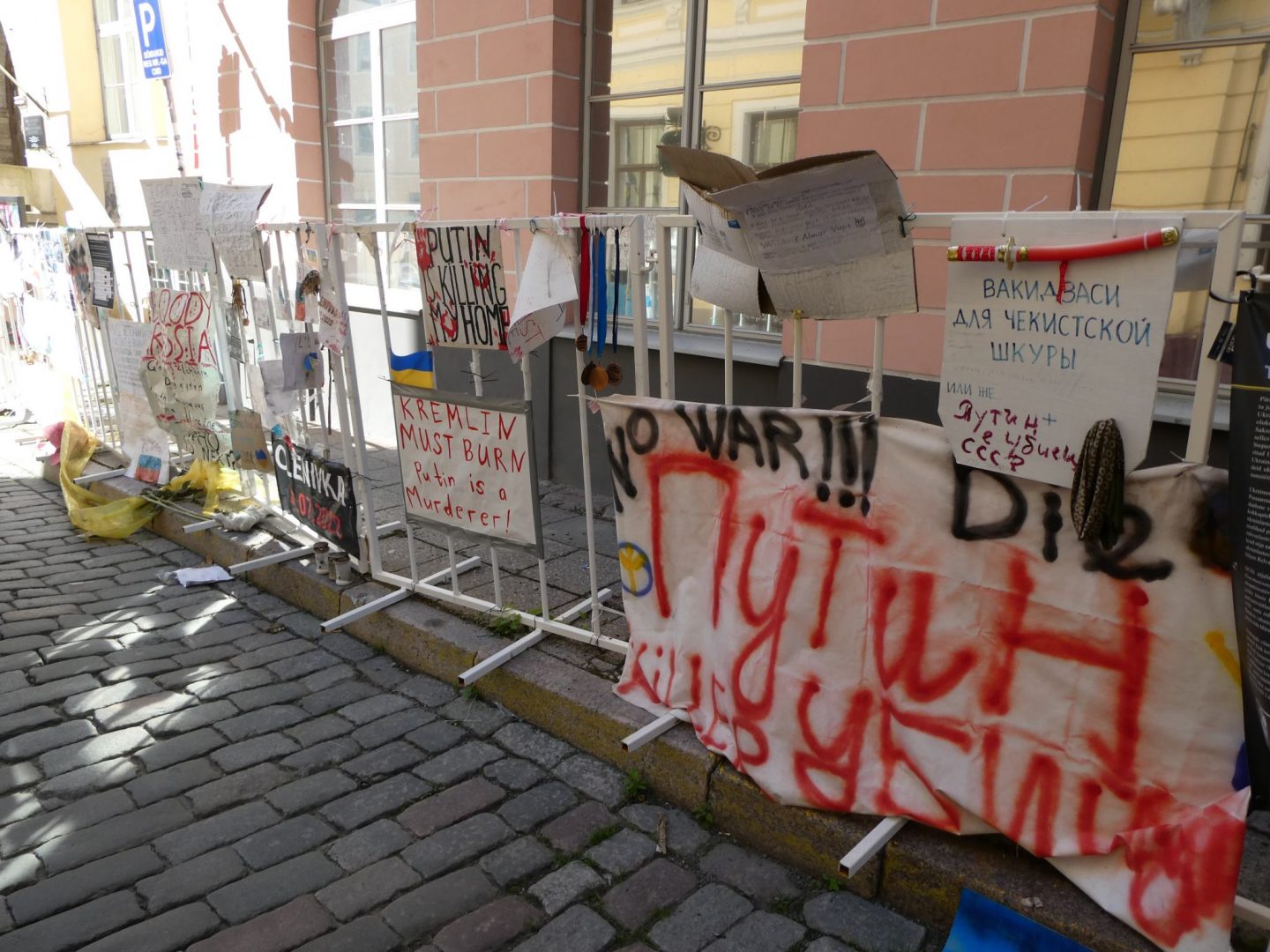 And some local businesses are not afraid to show their true feelings.  We saw this blackboard outside a restaurant in the Old Town square. 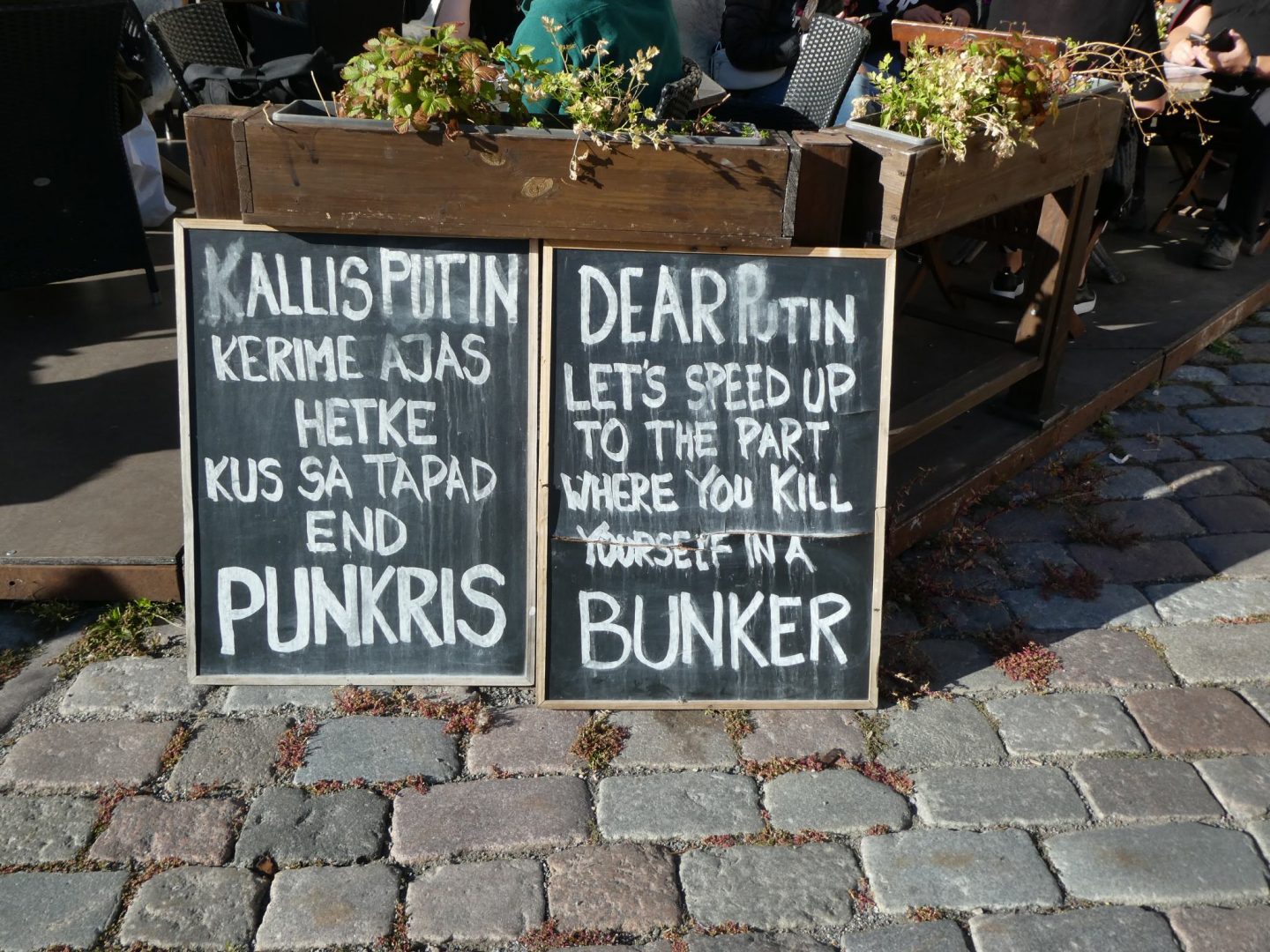 Estonia has taken in over 20,000 Ukrainian refugees since the beginning of the conflict. Just as we were leaving, it announced it would no longer allow Russians to enter the country.  But as a result of mass relocations of Russians during the Soviet years, 24% of the population is ethnic Russians.  It is well recognised that a proportion of them feel alienated from the mainstream.  Pro-Ukraine sentiment is not universal.  The whole country is keeping a wary eye on its northern neighbour.