Estonia’s second city is often overlooked in favour of the more glamorous Tallin, but it’s a very pleasant place to spend a few days.

The beautiful Tartu Train Station was built in 1876 and carefully restored in the 2000s. 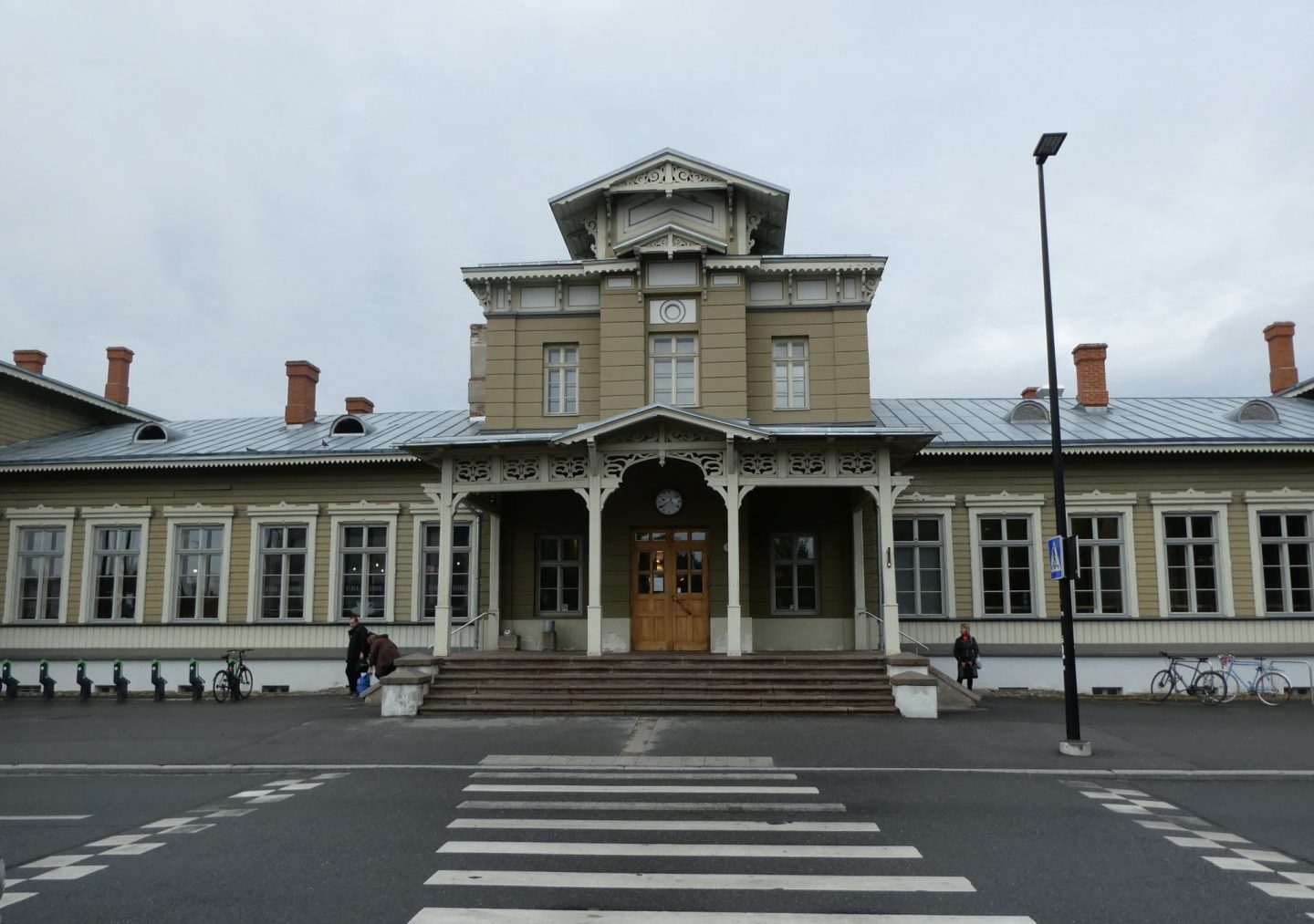 The existing historic centre was mostly built in the 1700s and many of the stone commercial buildings from that era survive in a quiet cobblestone precinct. 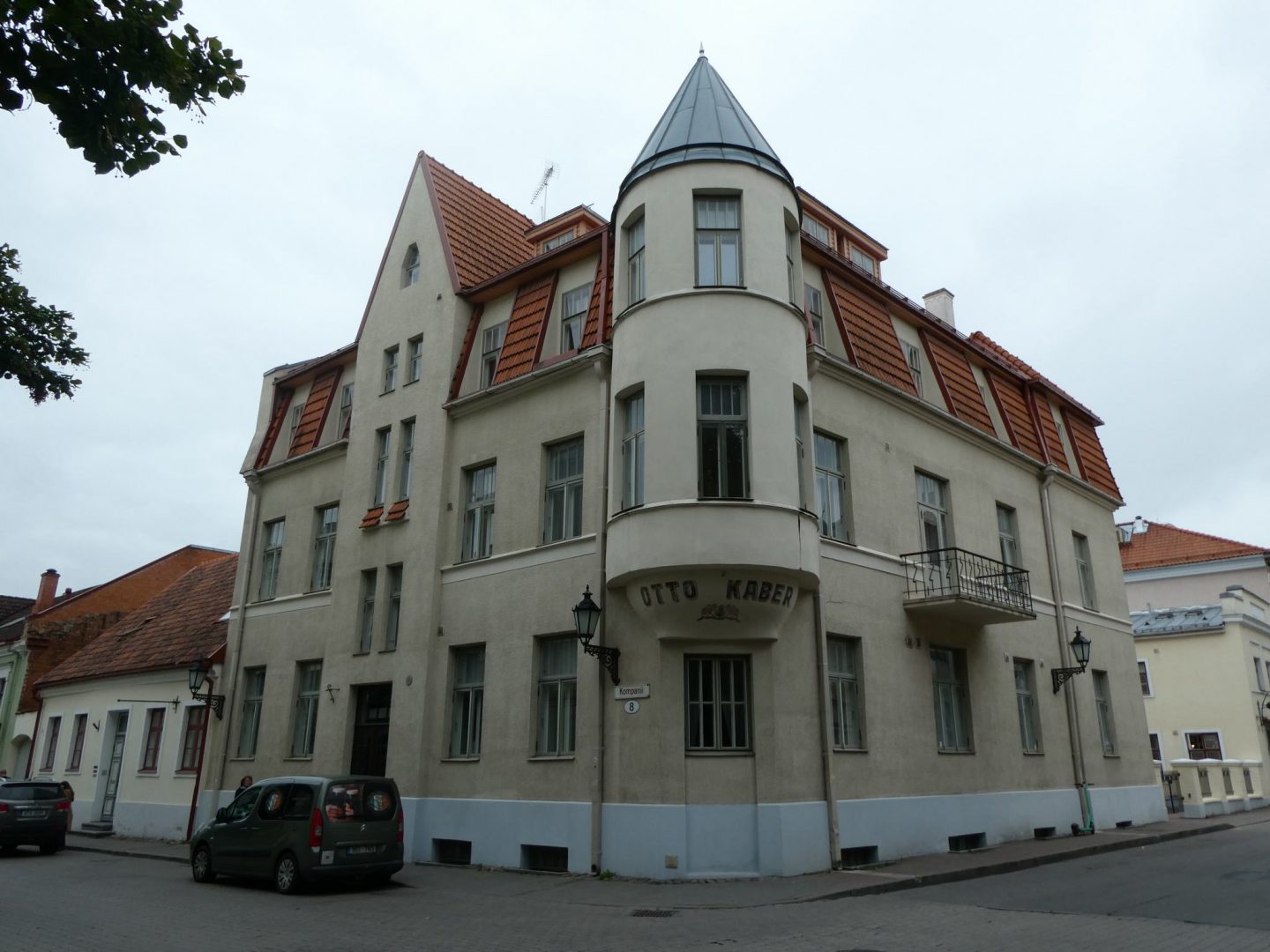 In 1775 most of the town’s wooden buildings were destroyed in a devastating fire but a few were spared.  The Tartu Puppet Theatre and the Toy Museum next door are lovely examples. 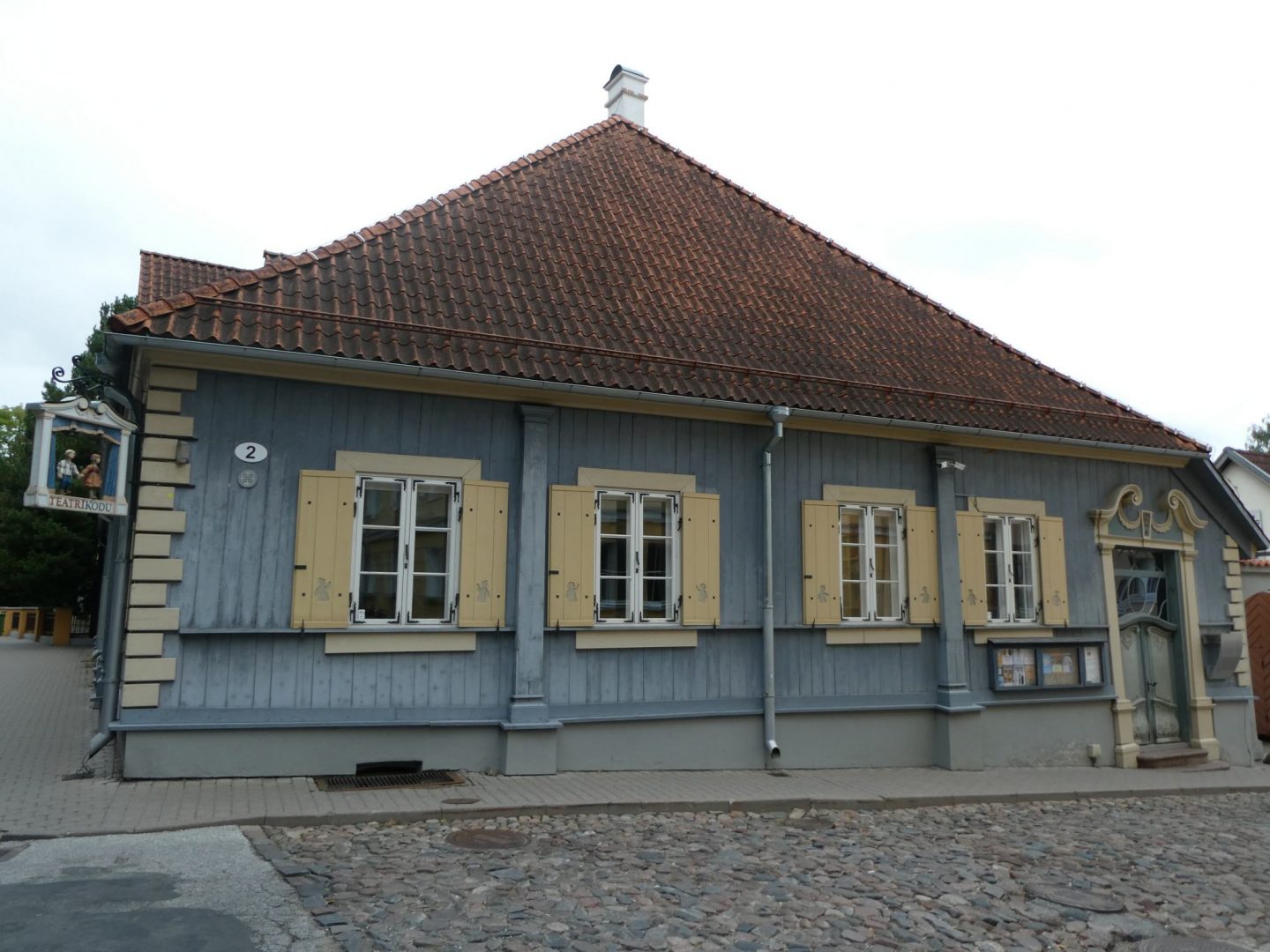 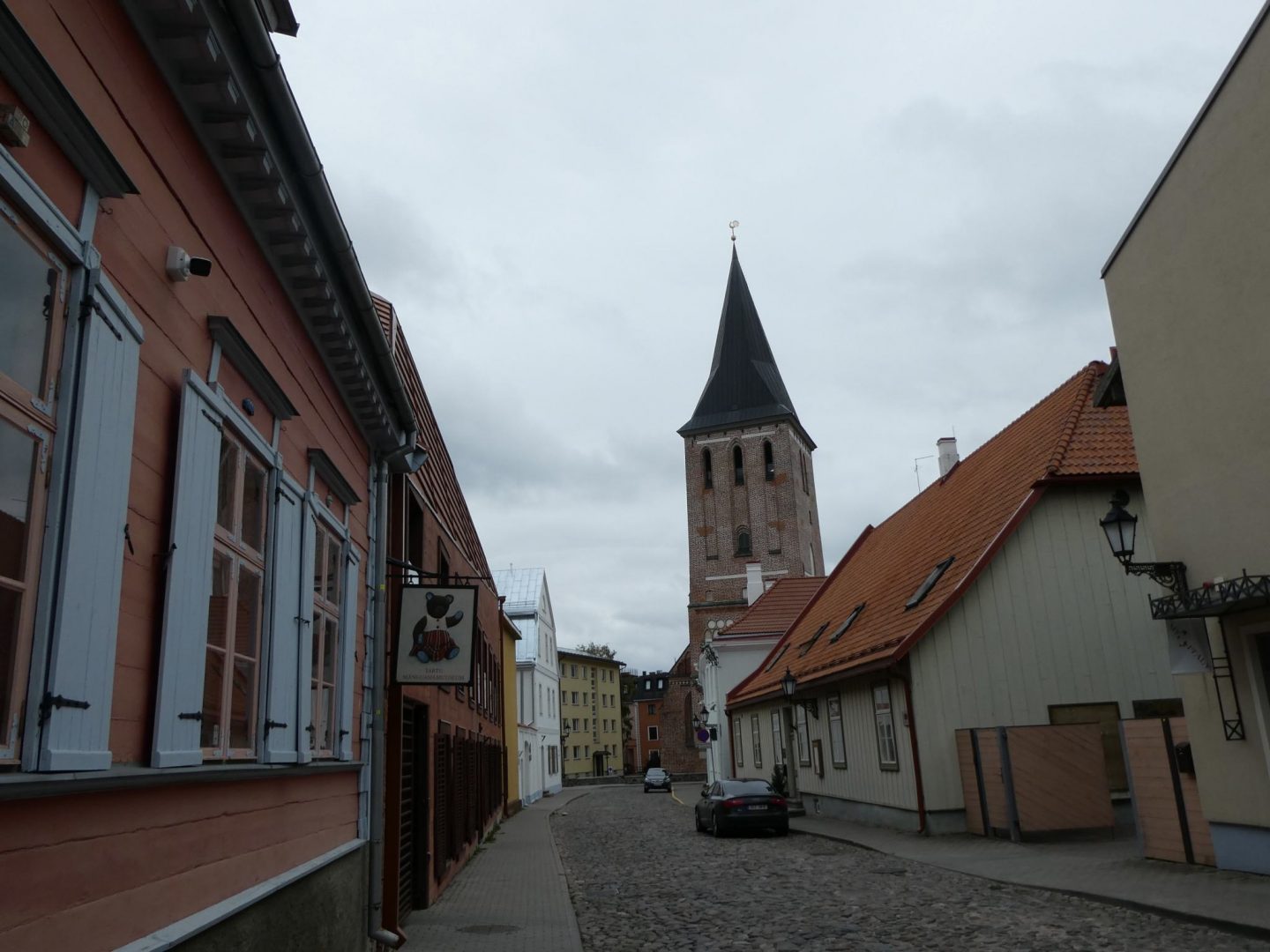 Tartu University was established in 1632 during the Swedish reign to train Lutheran clergy and public officials.  It’s the oldest and largest higher education institution in Estonia.  Its buildings are included in the European Heritage Label list as “embodiment of the ideas of a university in the Age of Enlightenment”. 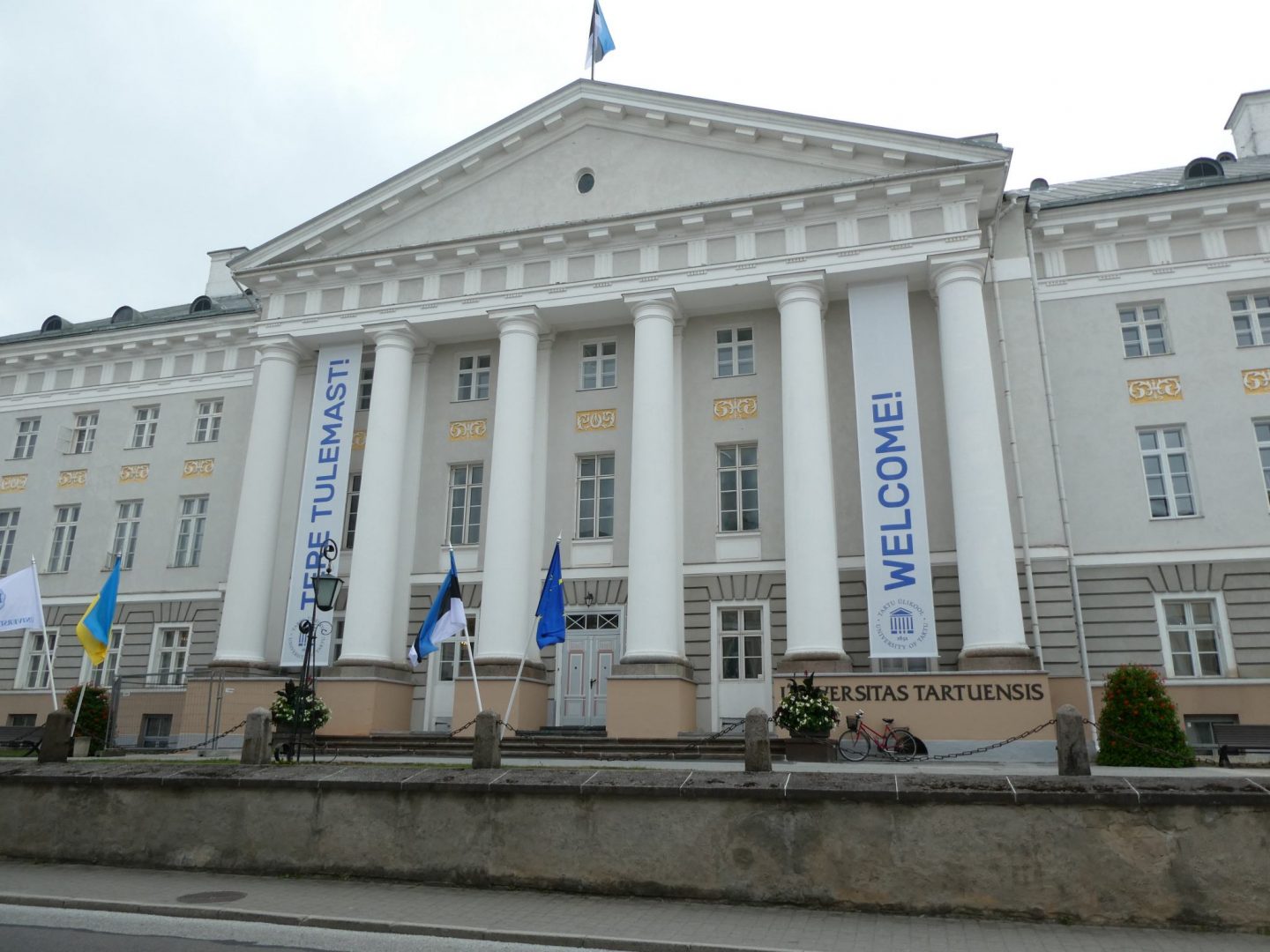 The town doesn’t have the grandeur of Cambridge or Oxford but it has the same feel of a place steeped in academic history and tradition.  And as 20% of the population are university students,  it’s a lively place as well.

The Town Hall was built in the 1780s and is modelled on a Dutch town hall, but with a clock tower added, purportedly to encourage the university students to get to classes on time. 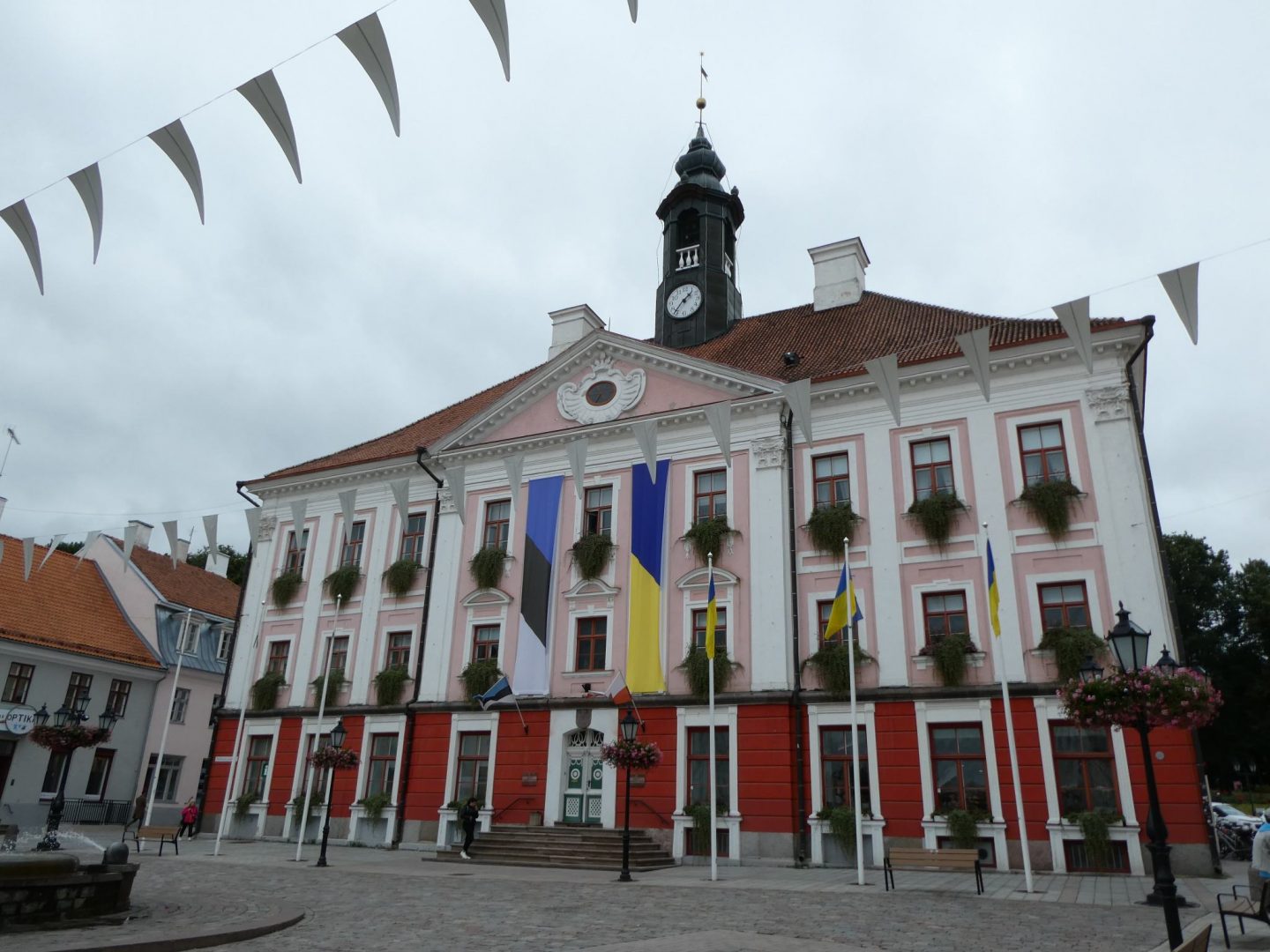 You might have noticed both buildings have Ukraine’s distinctive blue and yellow national flag displayed as well as Estonia’s blue, black and white one.  A symbol of solidarity and support.

It seems like just about every Estonian who’s made a contribution to the arts, sciences, medicine, politics or the nationalist movement might have studied or taught at the university here.   There are statues on many street corners and the parks are awash with monuments honouring them.  Seriously, they are everywhere and some of them are quite obscure.  Like this fellow who pioneered embryology and as a somewhat random side interest, wrote the world’s first textbook on permafrost. 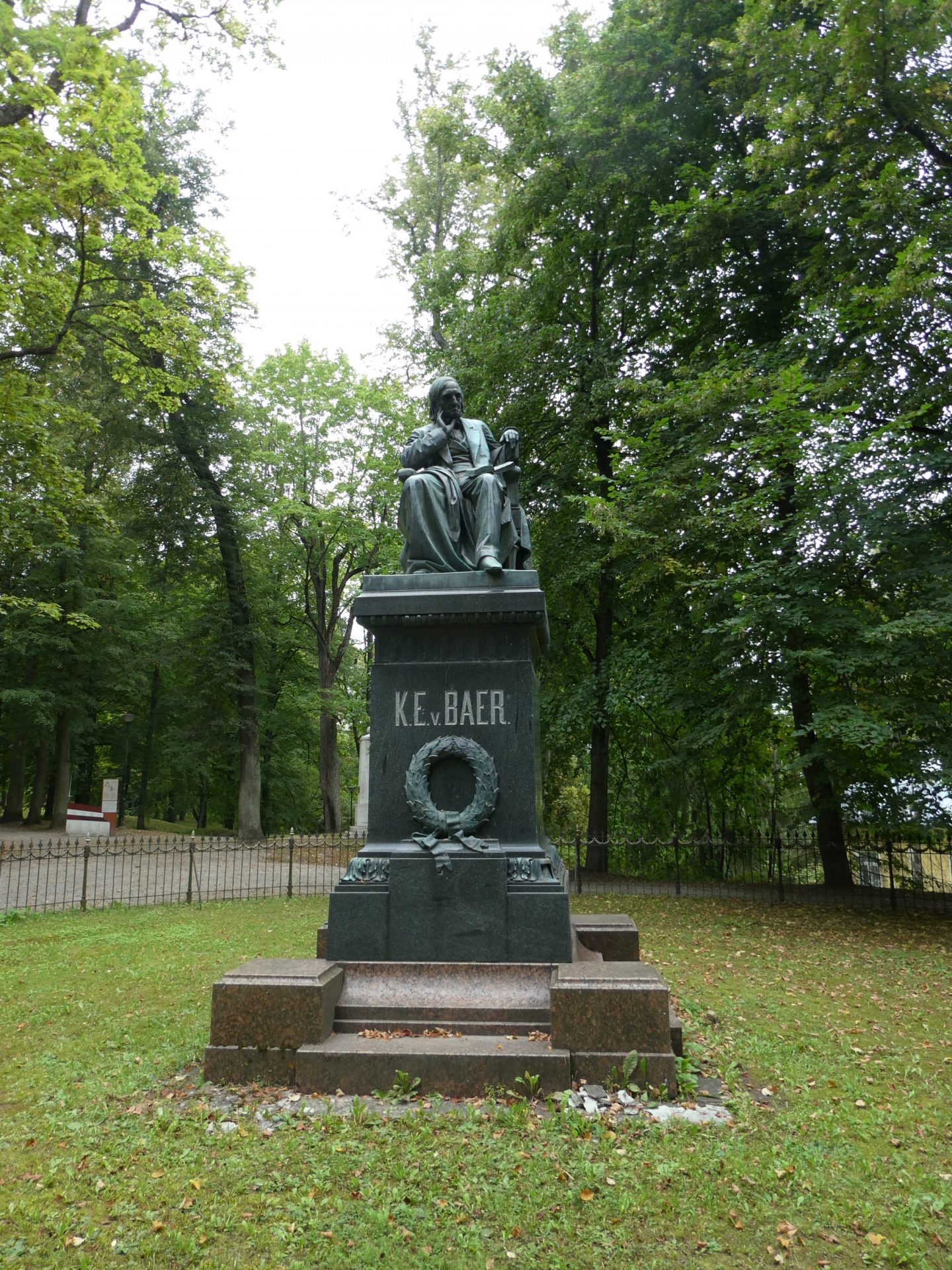 Of course, most of the names don’t mean a lot to foreigners.  But there’s a swag of modern, really fun statues as well.

A sculpture called Kissing Students which stands on a plinth in the fountain in the town square has become an emblem of the city. 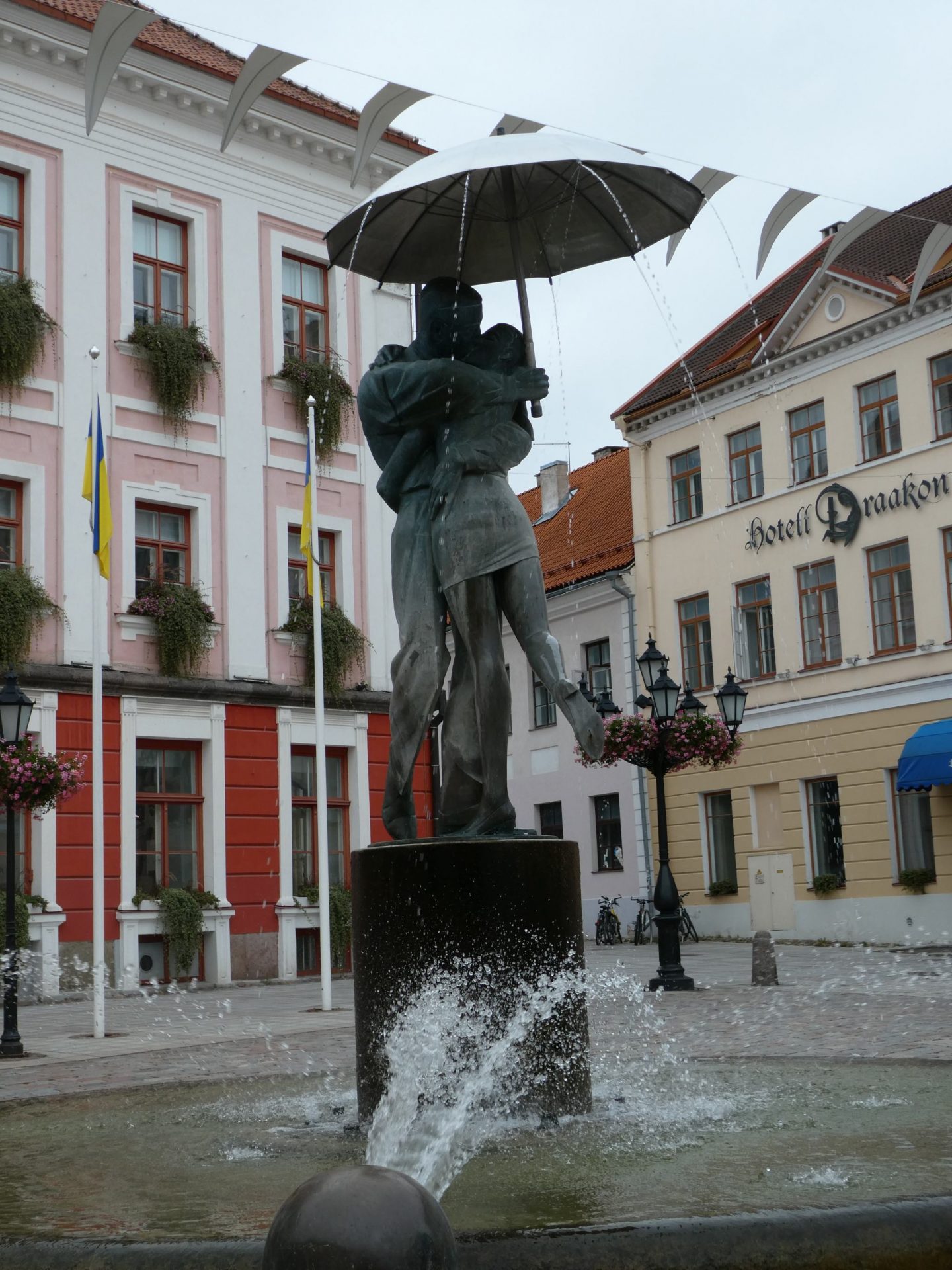 Father and Son depicts the sculptor and his infant son.  They are the same size and are meant to symbolise the new generation in which children are increasingly outgrowing their parents.  It was a little disturbing to see from their hand polished appearance that fondling their private parts seems to be common. 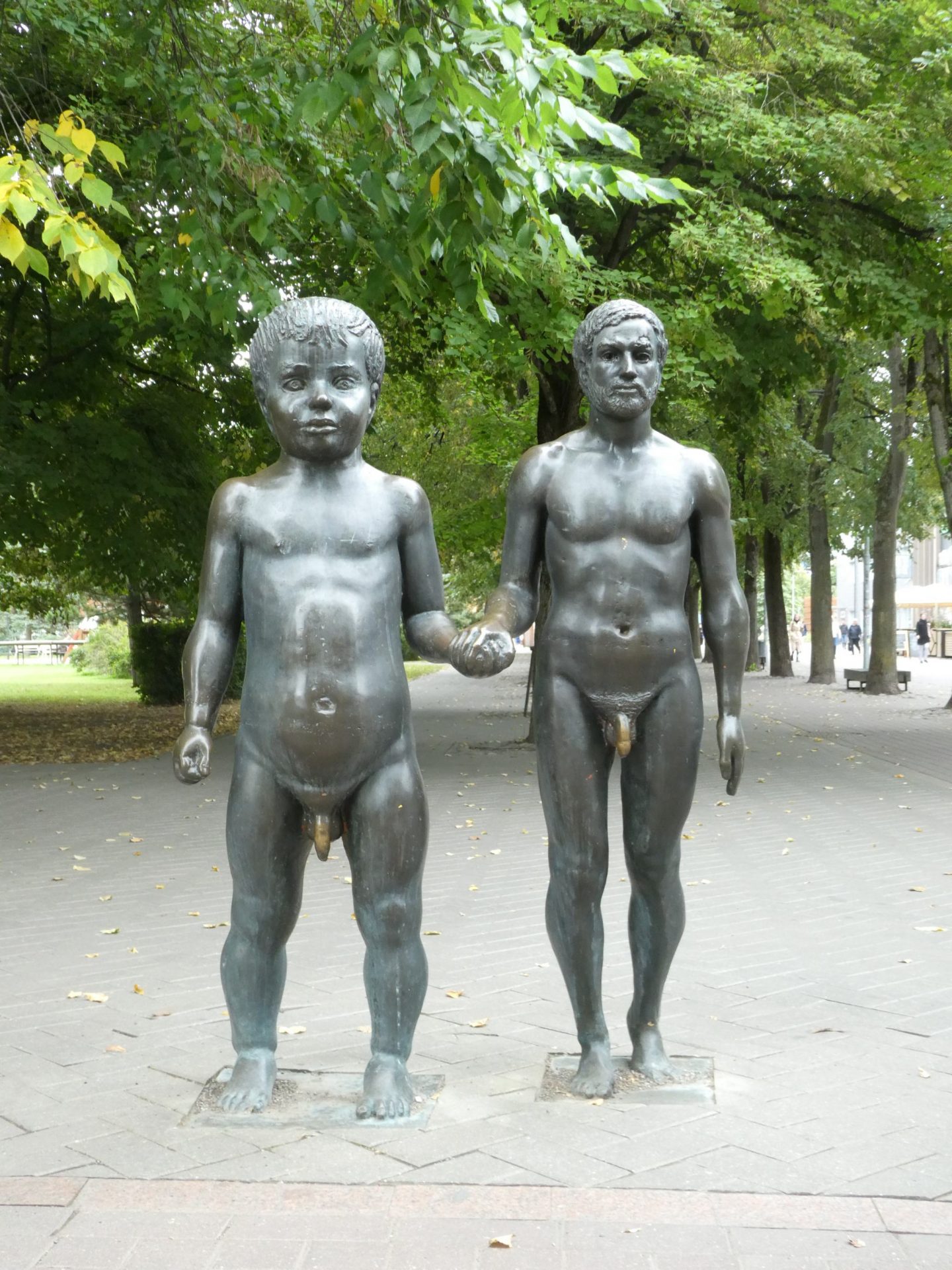 For a different perspective on the inter-generational divide, there’s the unmistakably 1970s sculpture Women from the Countryside contrasting a traditionally attired older rural lady and a bra-less younger woman in flared jeans. 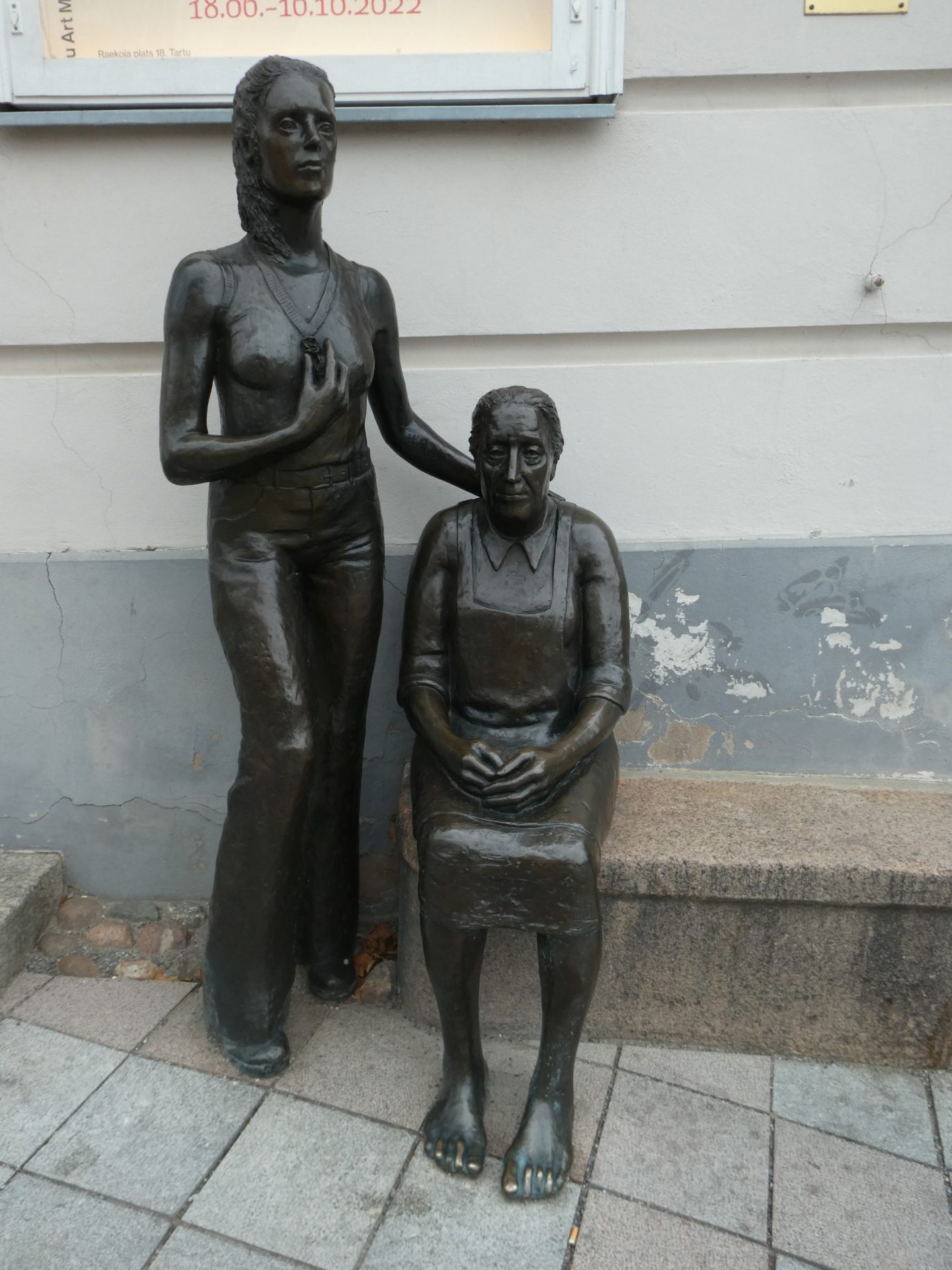 They are outside the Tartu Art Museum, which leans precariously to the left.  Could that be a metaphor?  Built in 1783, it tilts at 5.8 degrees – more than the Tower of Pisa – thanks to subsidence caused by the nearby river. 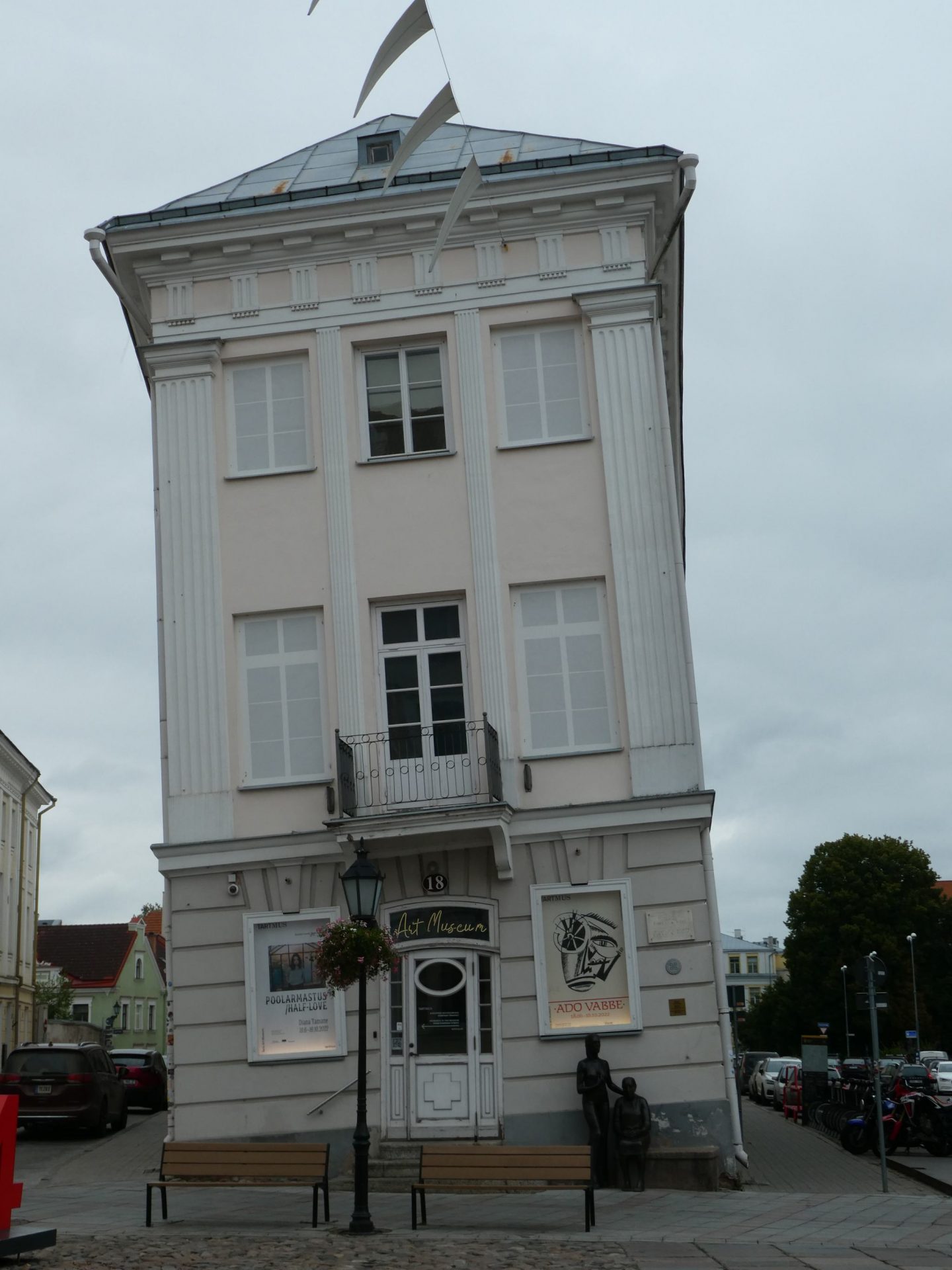 Outside the covered market, Bronze Pig looks happy – oblivious to the fact that he’s been marked up for the butcher.  You might just be able to see the lines and numbers on his side indicating the prime cuts.  The market is small but has lots of local produce and sweet treats.  It’s worth a visit. 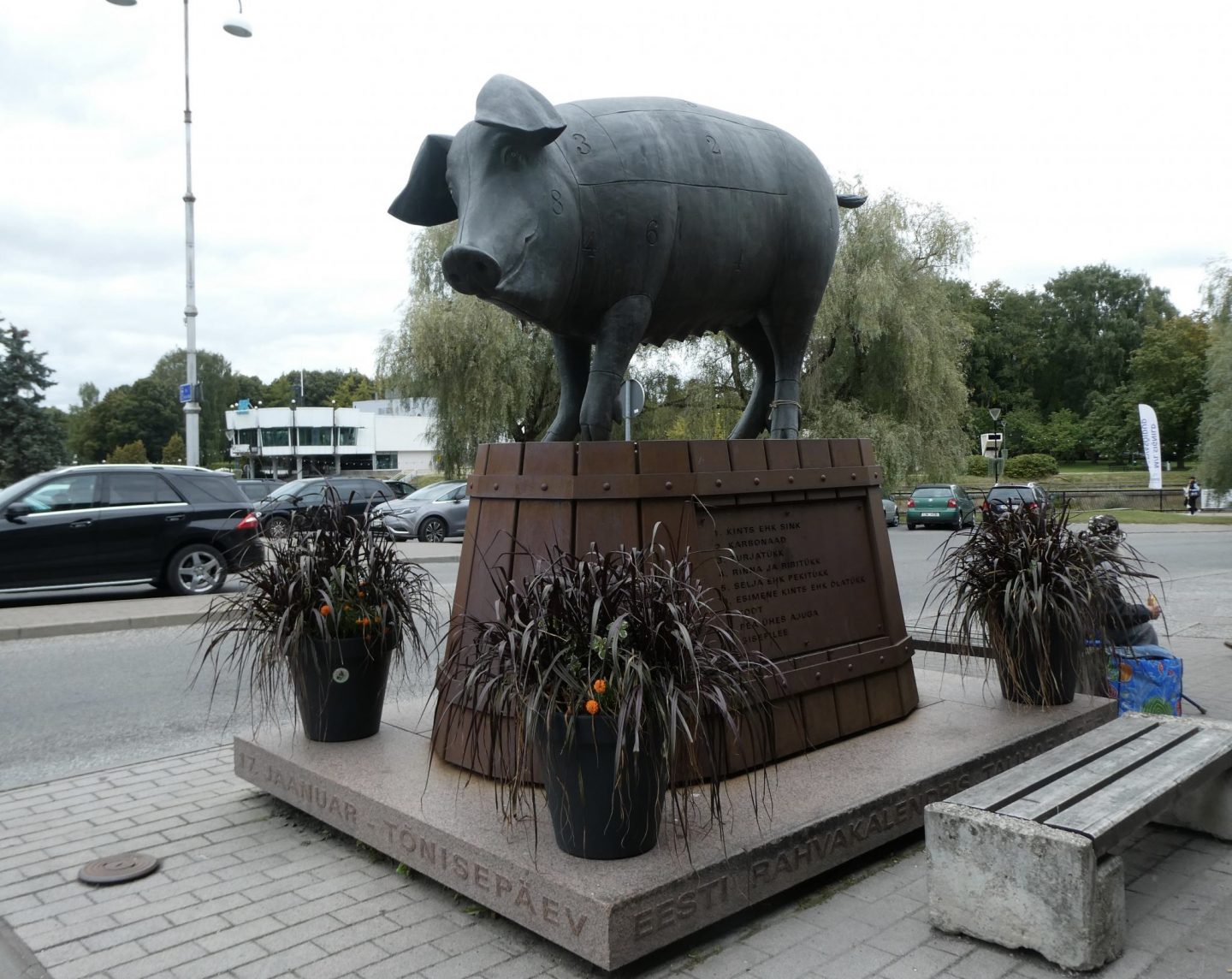 This next one is ‘a caricature of famous professor, Yuri Lotman’.  Unless you are a Pushkin scholar or an expert in semiotics, it’s unlikely you’ve heard of him.   The symbolism completely eluded us.  But for our New Zealand readers – John says it reminds him of the Christchurch fountain from the days of his youth which was jokingly referred to as ‘a bus load of bowlers returning from the West Coast’. 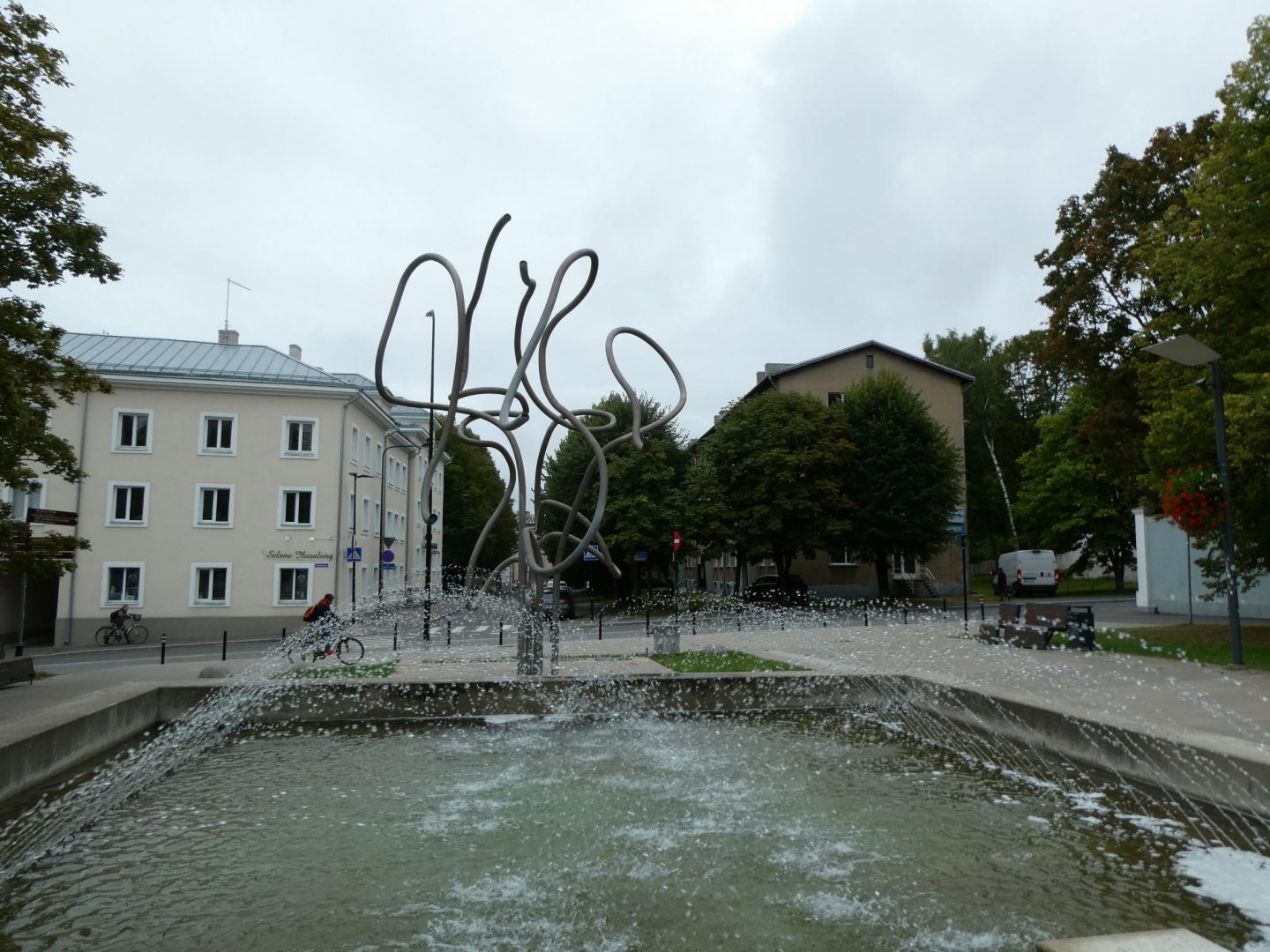 Oscar Wilde and Eduard Vilde sit deep in conversation on a park bench.  Vilde is a much revered Estonian writer, responsible for such classics as The Milkman from Maekula.  No, we didn’t make that up and it isn’t a joke about Baltic provincialism!  The two men never met, and we weren’t able to find out why the sculptor chose Wilde but his polished knees suggest lots of people like to sit on his lap. 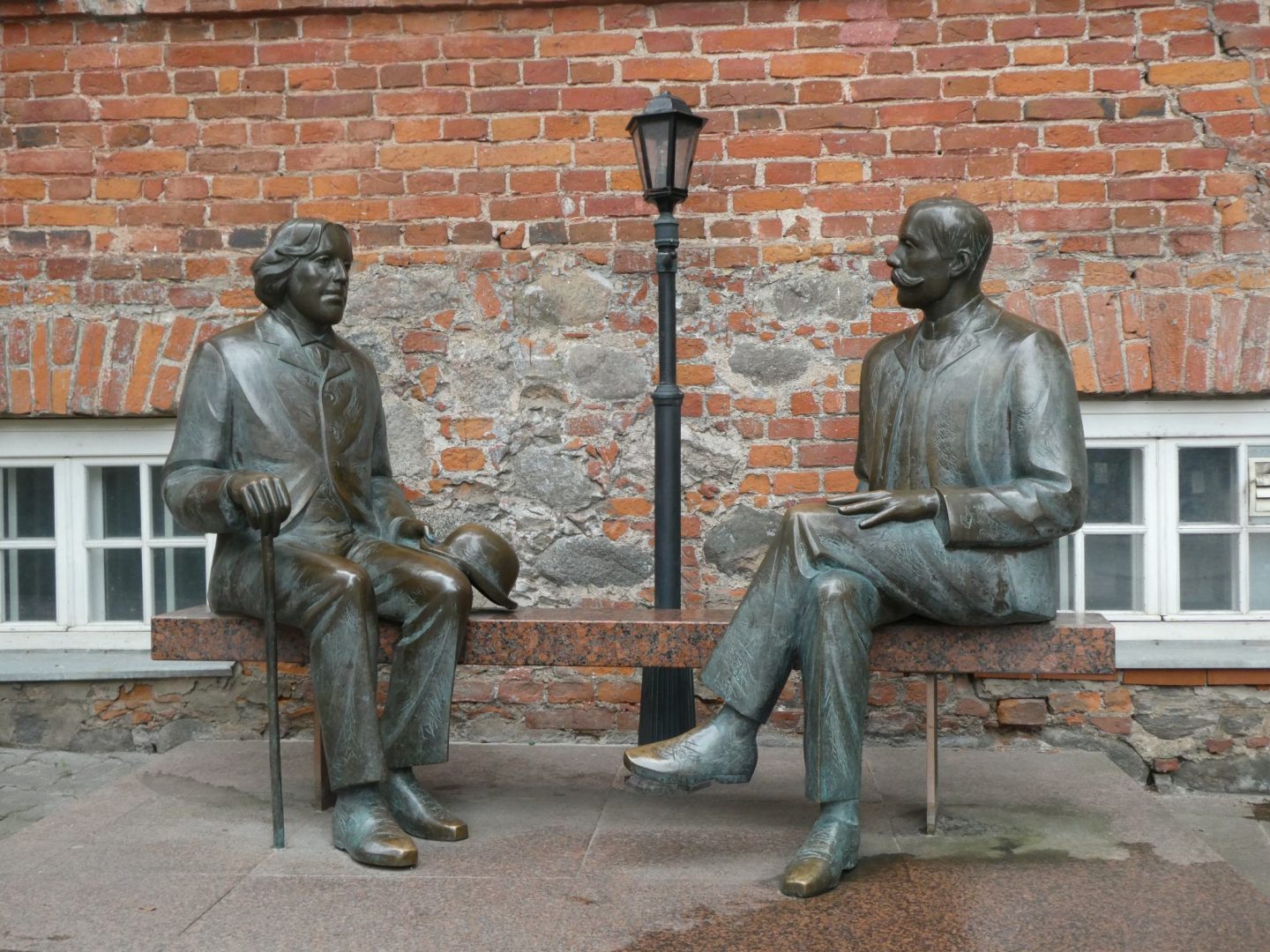 After seeing these signs all over town, we were disappointed not to see any cats on bicycles!  Actually, it’s a request for cyclists to walk their bikes if there are lots of pedestrians. 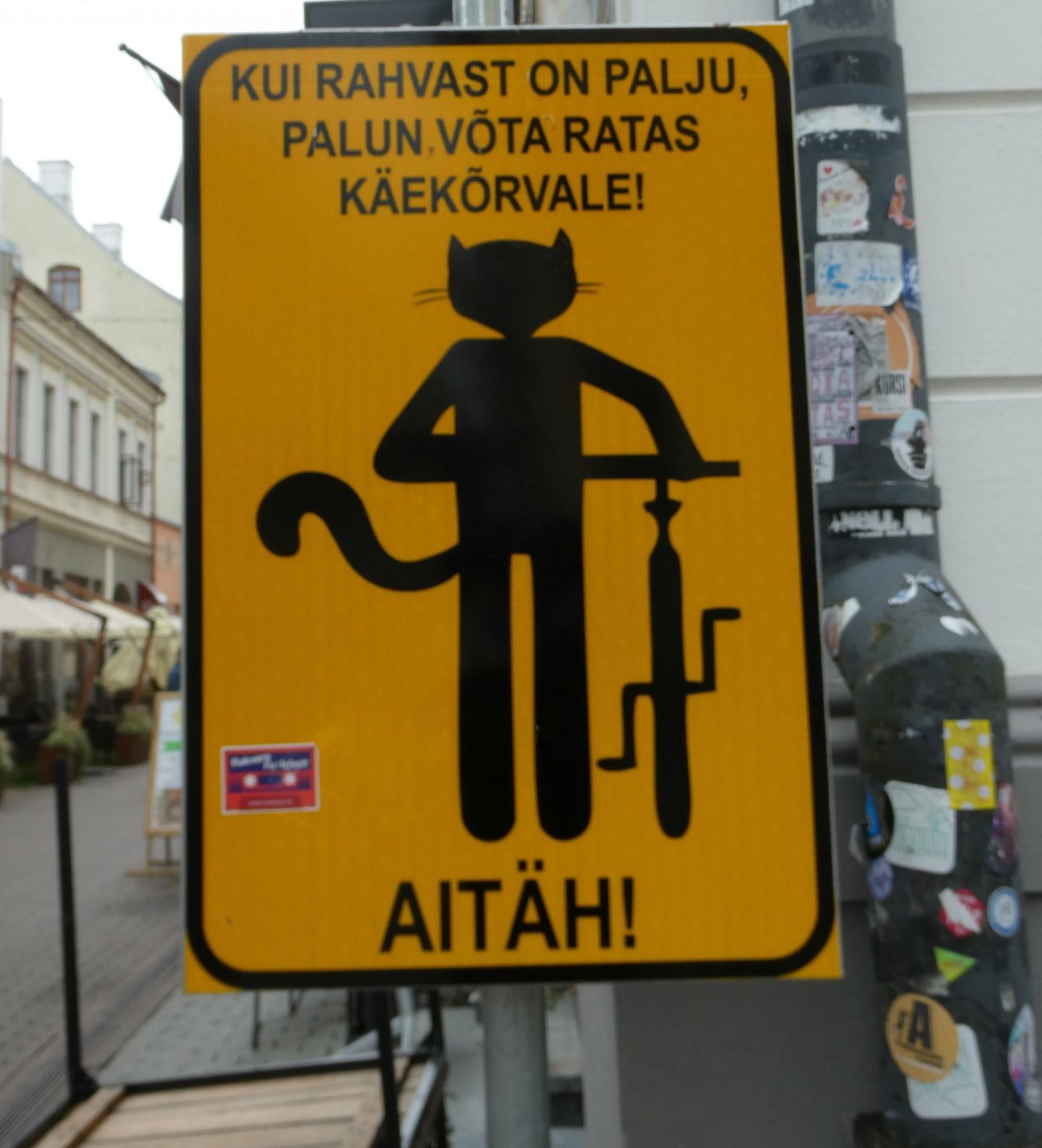 Pre-Christian Estonians made sacrifices to pagan gods on sacrificial stones.  There are still about 400 of them scattered around the country and one is in Tartu.  Nowadays, it’s a tradition for students seeking catharsis to burn their lecture notes here when their exams are over. 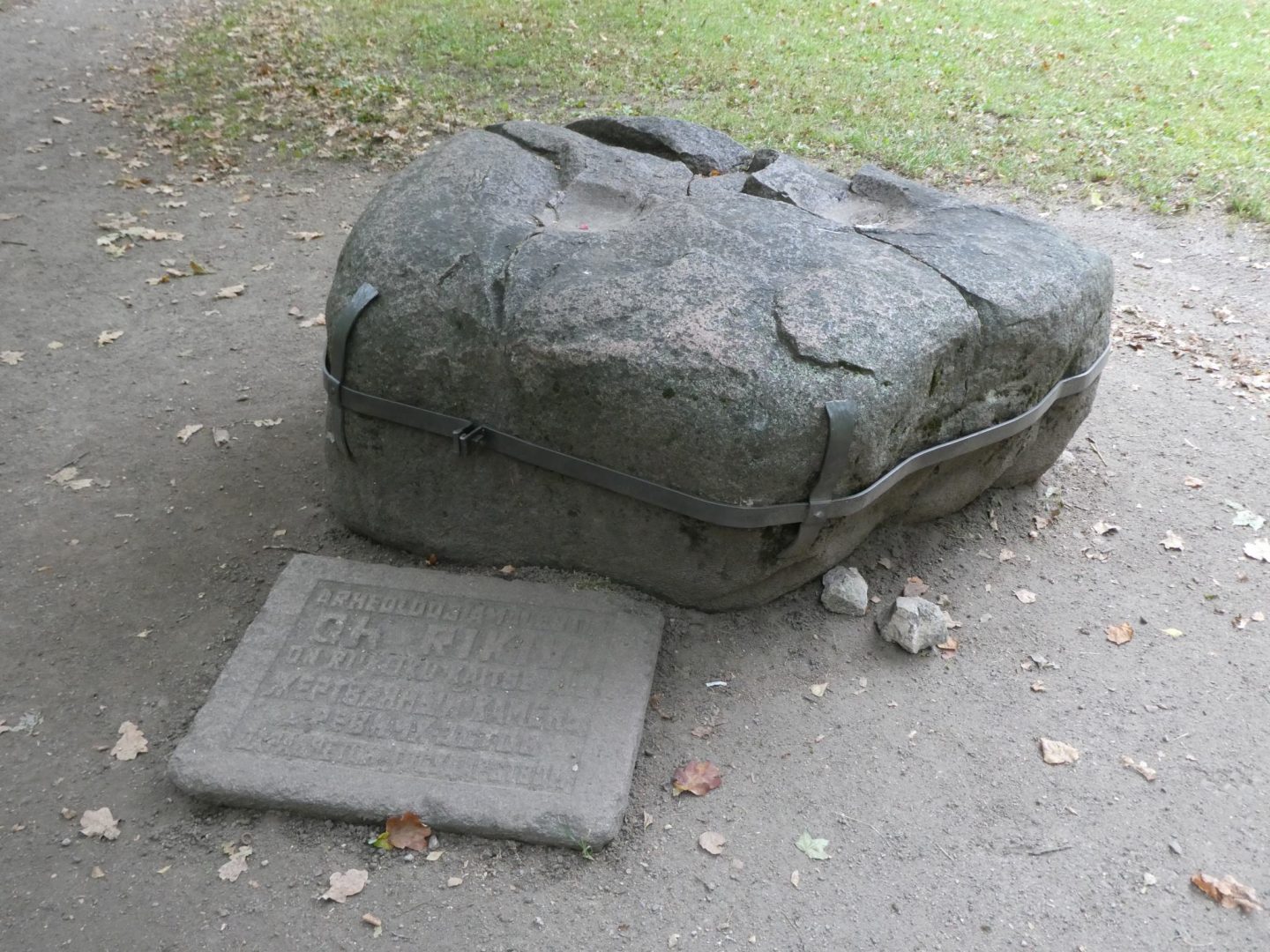 Another student tradition involves the Angel’s Bridge.  Built in the early 1900s when concrete bridges were still a rarity in the city, it’s said that if you make a wish as you run across it holding your breath, the wish will come true. 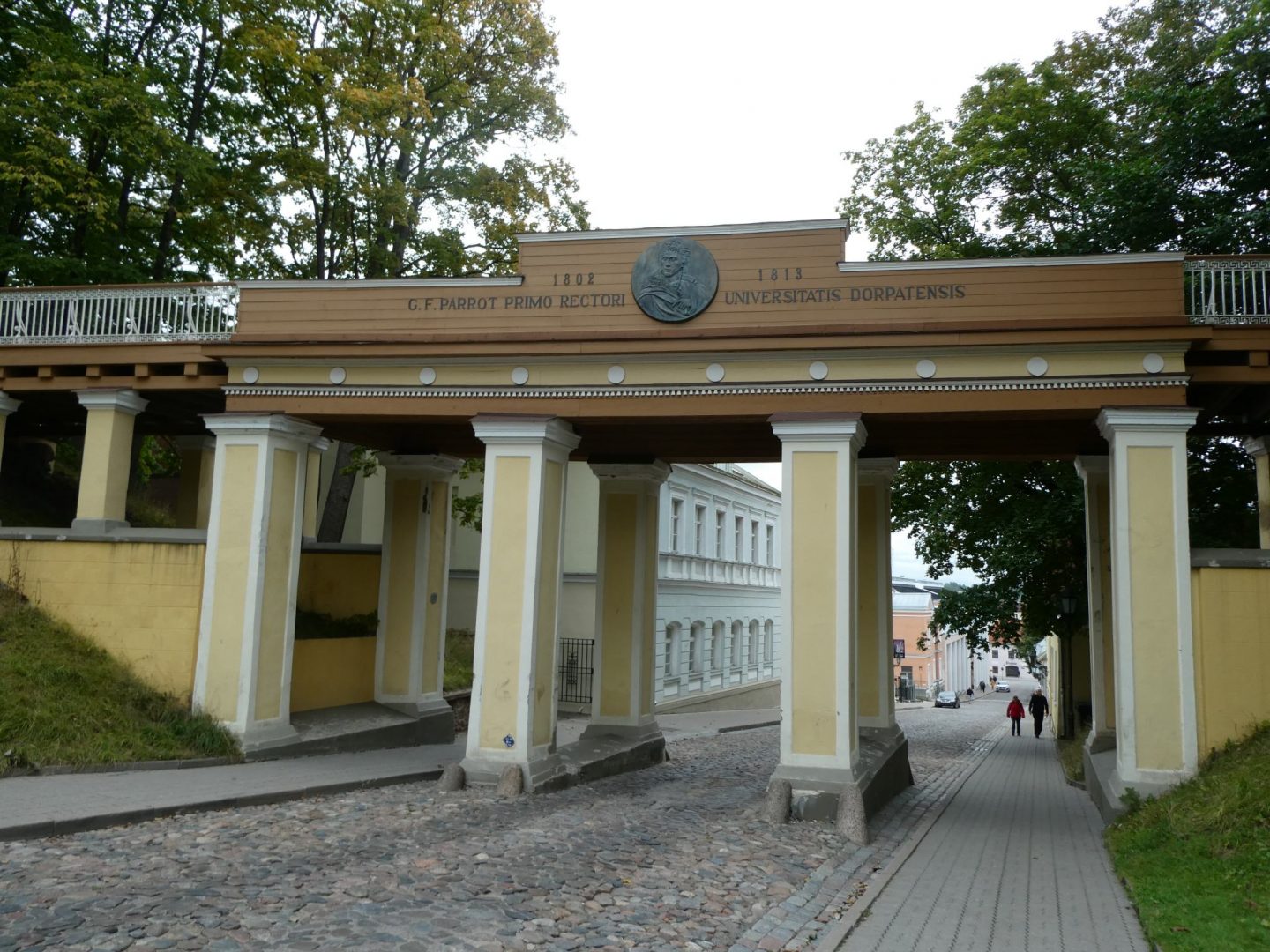 The name is probably a derivation of the Estonian word for ‘English bridge’ referring to its position leading to an English style park, rather than anything to do with angels.  Nevertheless, it gave rise to another bridge built around the same time becoming known as the Devil’s Bridge. 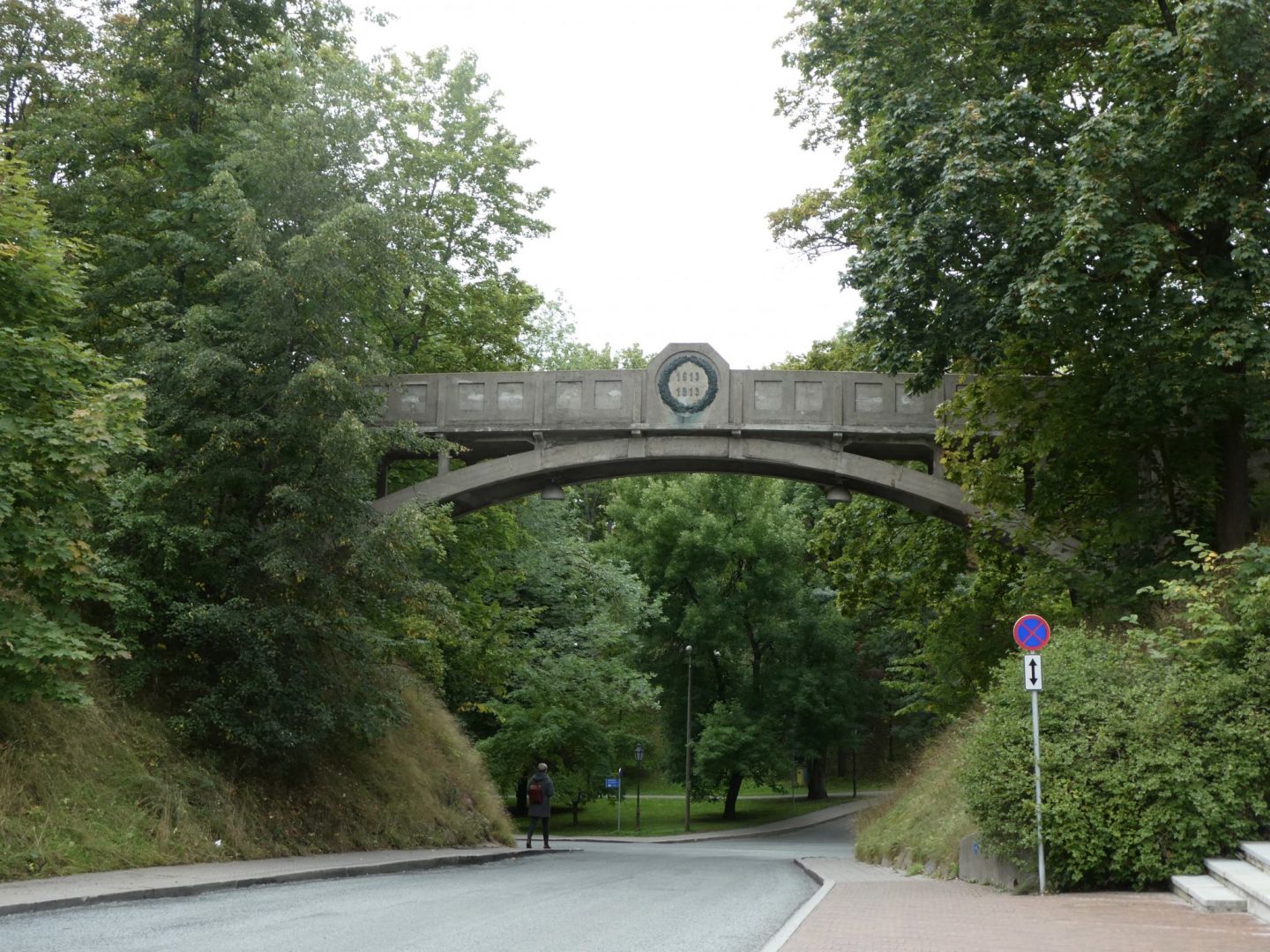 In it’s day, Tartu Cathedral was one of the largest churches in Estonia, and the only medieval church in Estonia with two spires.  Building began in the second half of the 1200s and continued for almost 250 years.  It was finally completed in the late 1400s, only to fall victim to Protestant vandalism in 1525 and then almost complete destruction in the Livonian War later that century.   A part of it has been salvaged and houses the University Museum.   The rest remains an atmospheric ruin. 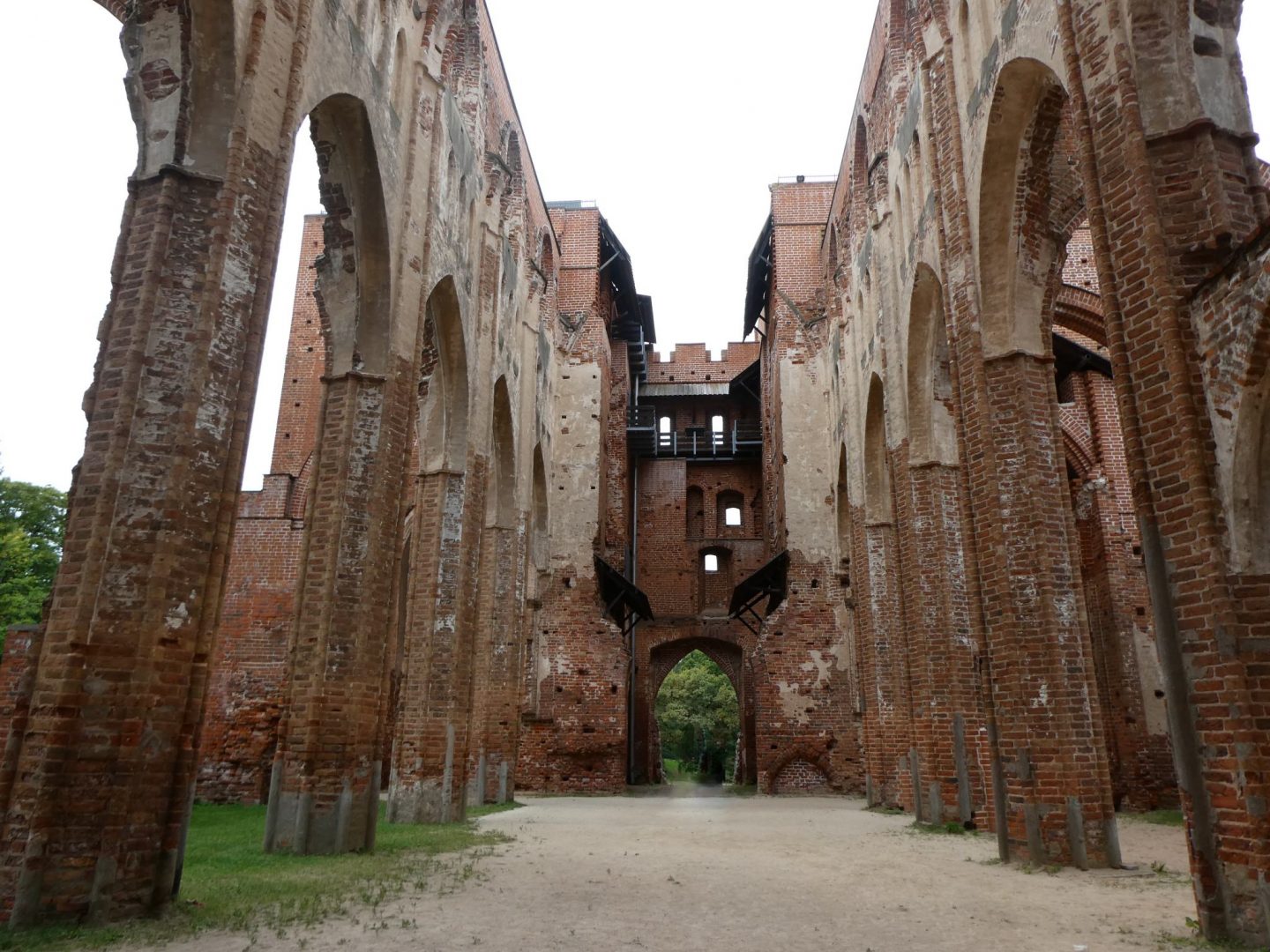 There’s no headline grabbing tourist attractions in Tartu.  It’s just a nice town for wandering around cobbled streets and leafy parks, meandering down the riverside paths, ducking into good coffee shops and generally just seeing what might be around the next corner.