From Tartu we caught the train to Cesis in Latvia.  Although there’s no longer any physical border between Estonia and Latvia, the trains don’t cross and the timetables don’t synchronise, so we had a few hours to kill at the border town, known as Valga to the Estonians and Valka to the Latvians.

The town has been here since the 1200s.  In the first wave of independence movements in the Baltics in the 1910s, Estonia and Latvia both claimed it.  In 1920, an international jury headed by a British Colonel ruled on the dispute by drawing a line through the middle of it.  A hard barrier with border check points divided the town until 2007.

Finally reunited, the town uses the slogan ‘One Town, Two Countries’.  From a visitor’s perspective it’s totally integrated, but the distinction still matters to some locals.  With better welfare entitlements and higher wages in Estonia, some Valka inhabitants have registered themselves of residents of Valga.

It’s a very quiet place with some interesting old buildings around the centre. 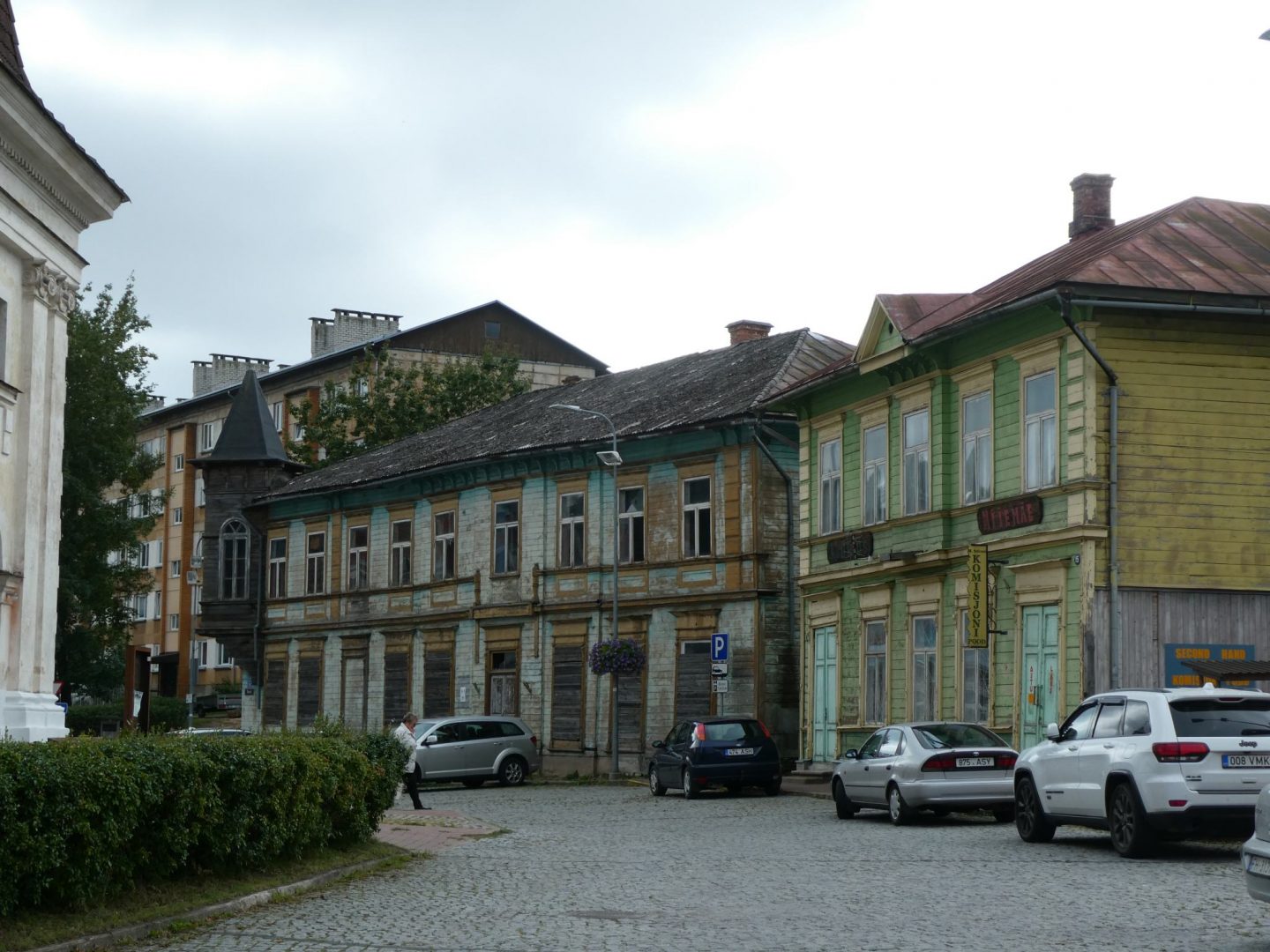 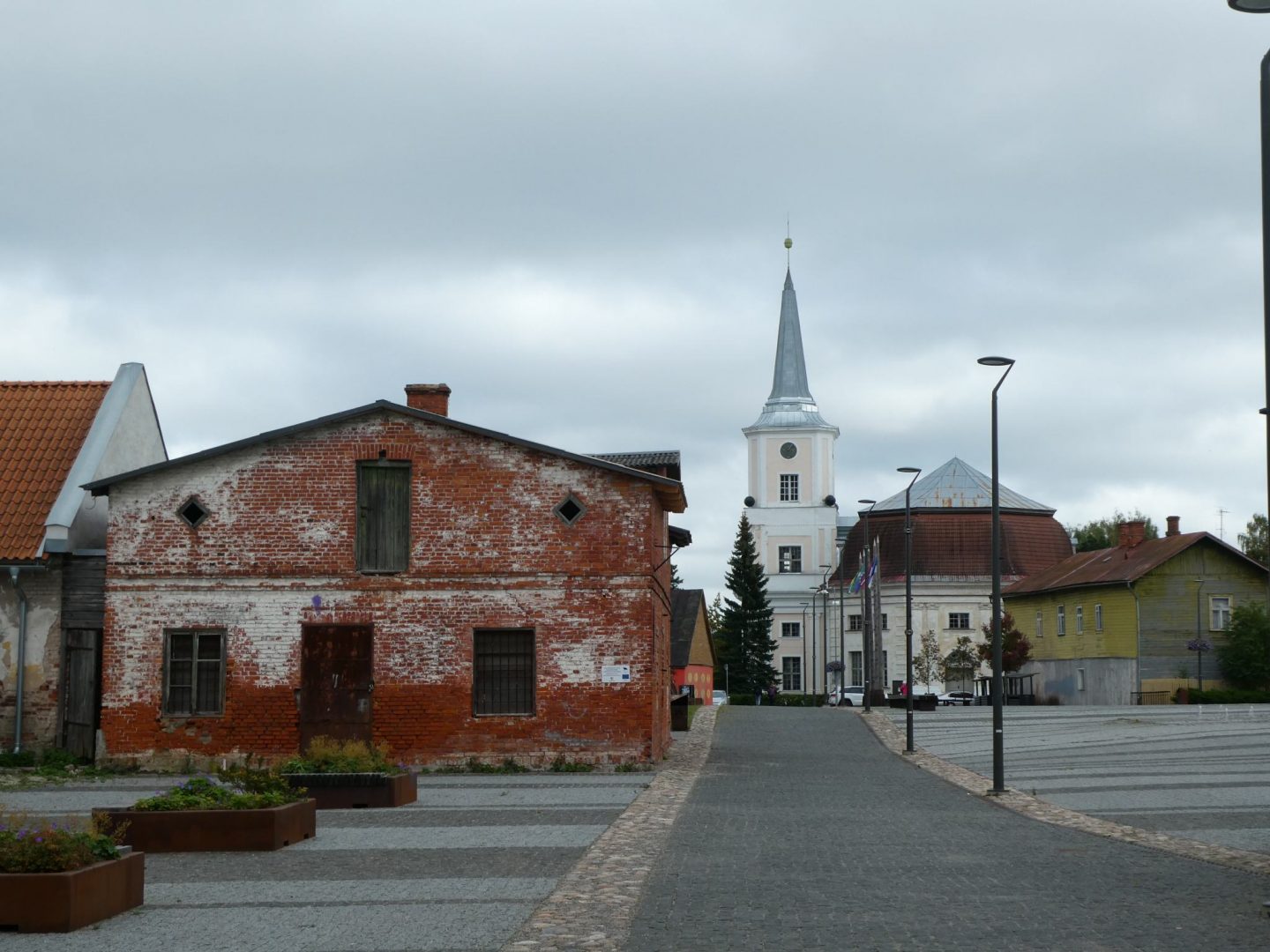 And an exuberant sculpture of Nipernaadi.  He’s the protagonist of a 1928 novel about a roguish vagabond who wanders the villages of rural Estonia charming the locals with promises he cannot keep and breaking women’s hearts, but somehow inspiring all to follow their dreams.

It was so successful as a novel, and later a film, that the word ‘nipernaadi’ is now Estonian slang for ‘an adventurous traveller who wants to experience something off the beaten track’. 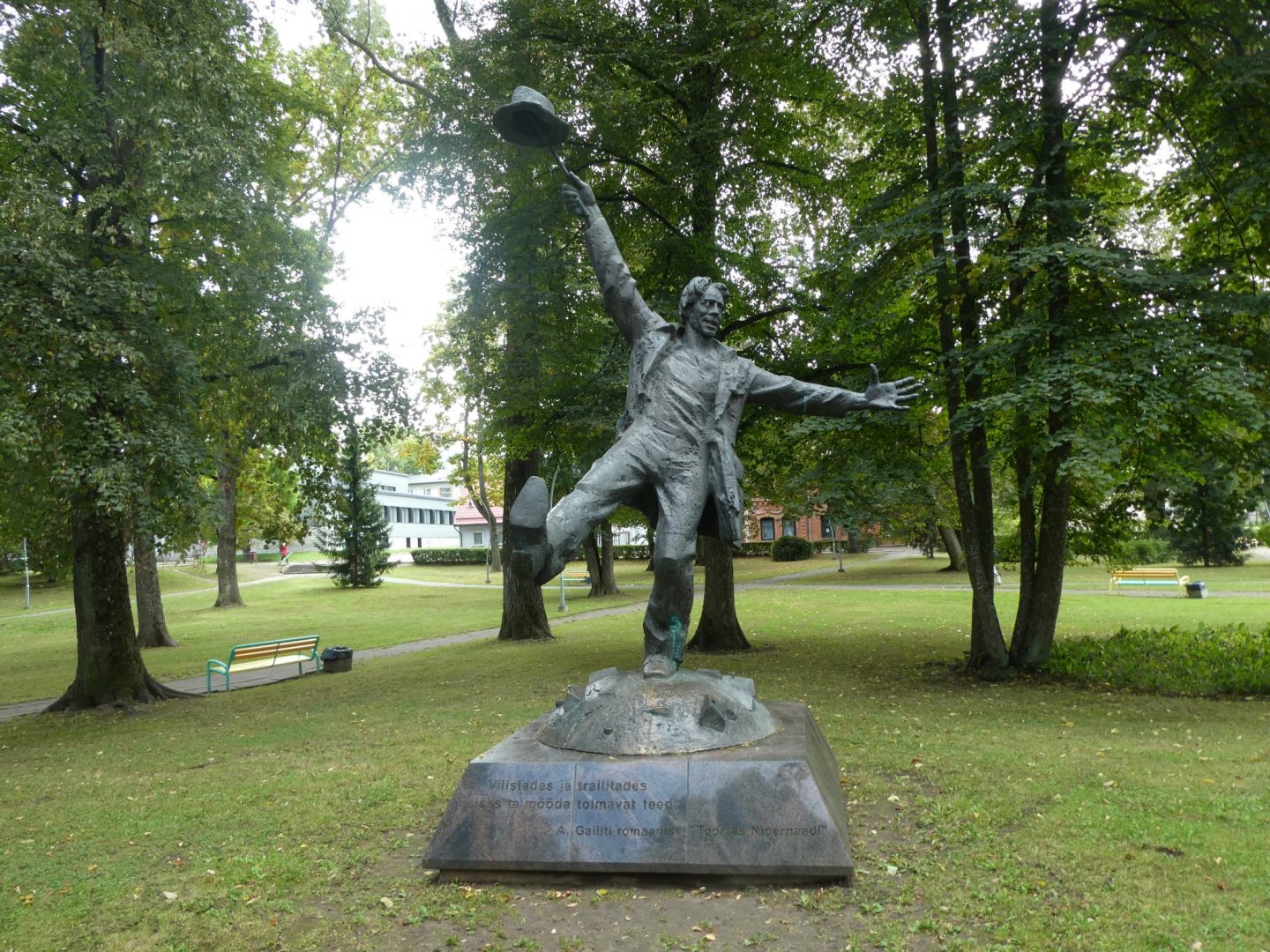 Anyway, on to Cesis, described by Lonely Planet as ‘the cutest little town in Latvia’.  The town of just under 12,000 residents has a small but pretty cobblestoned centre. 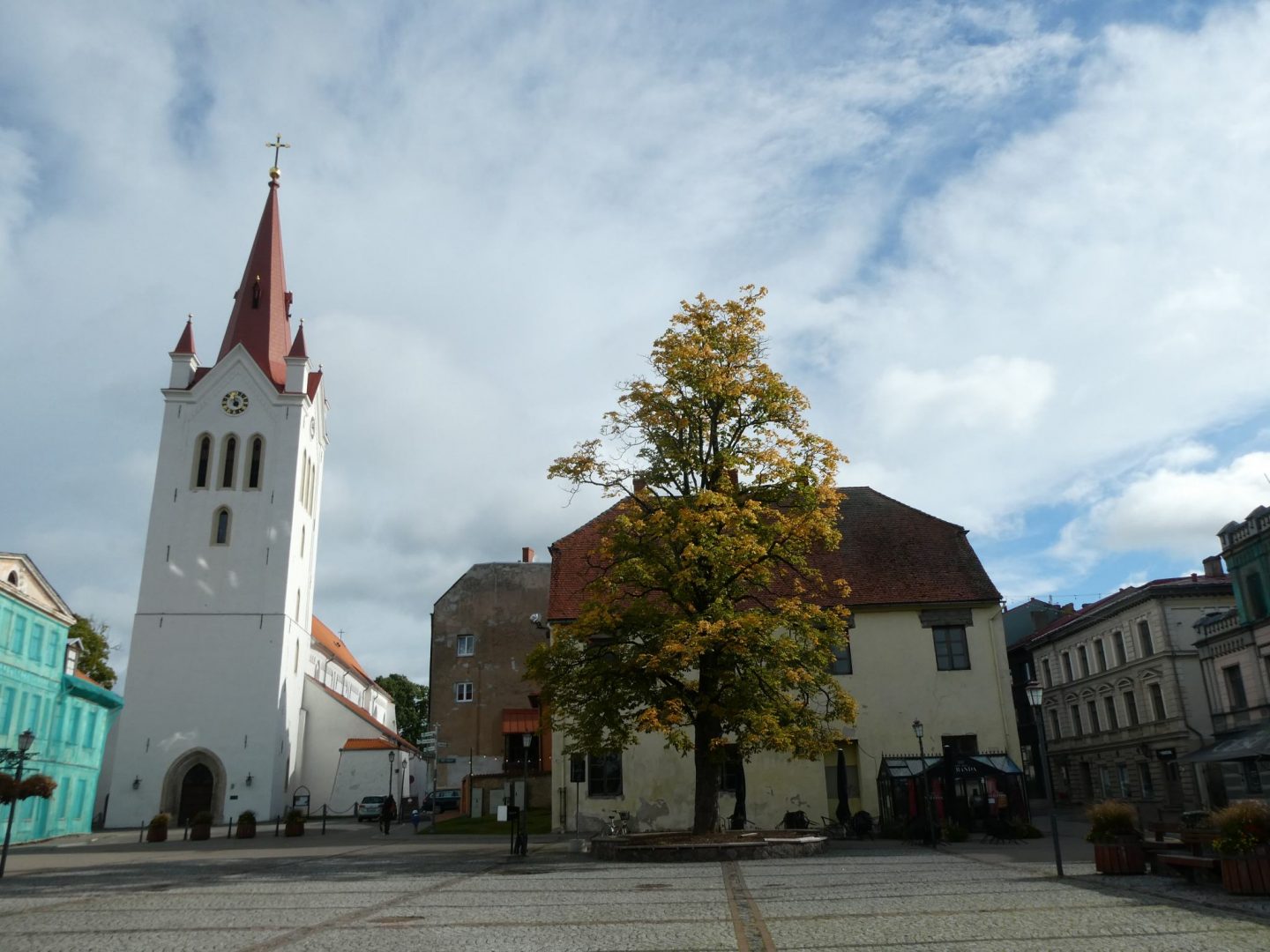 And some lovely parks. 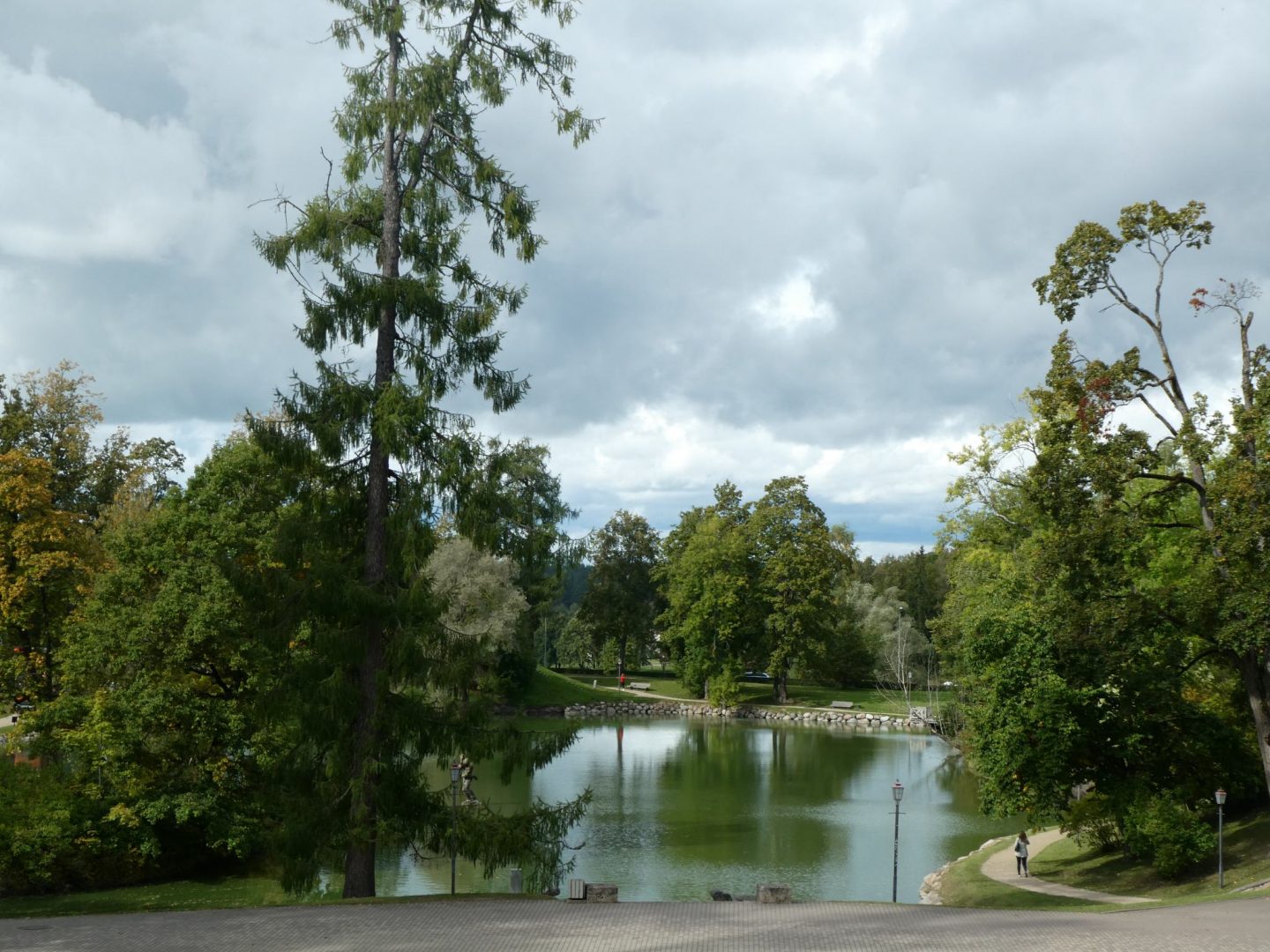 It’s home to two castles.  First there is the ruin of a stone castle built in 1214 by the Livonian Brothers of the Sword, an order of German military monks.  In the Middle Ages it was ok for monks to both serve God and cut people’s heads off.

The knights sabotaged the castle in 1577 to prevent it falling into Russian hands during an attack by Ivan the Terrible.  Restored, then comprehensively sacked by the Russians in 1703, it has remained a ruin since.  But that is changing.  With major restoration work ongoing, it is rising like a phoenix from the ashes.

You can get a candle and climb down into the dungeon, or walk a section of restored ramparts.  Restored rooms in the turrets have historical displays using holograms of characters in costume describing aspects of ‘their’ lives as soldiers, prisoners, commoners and others. 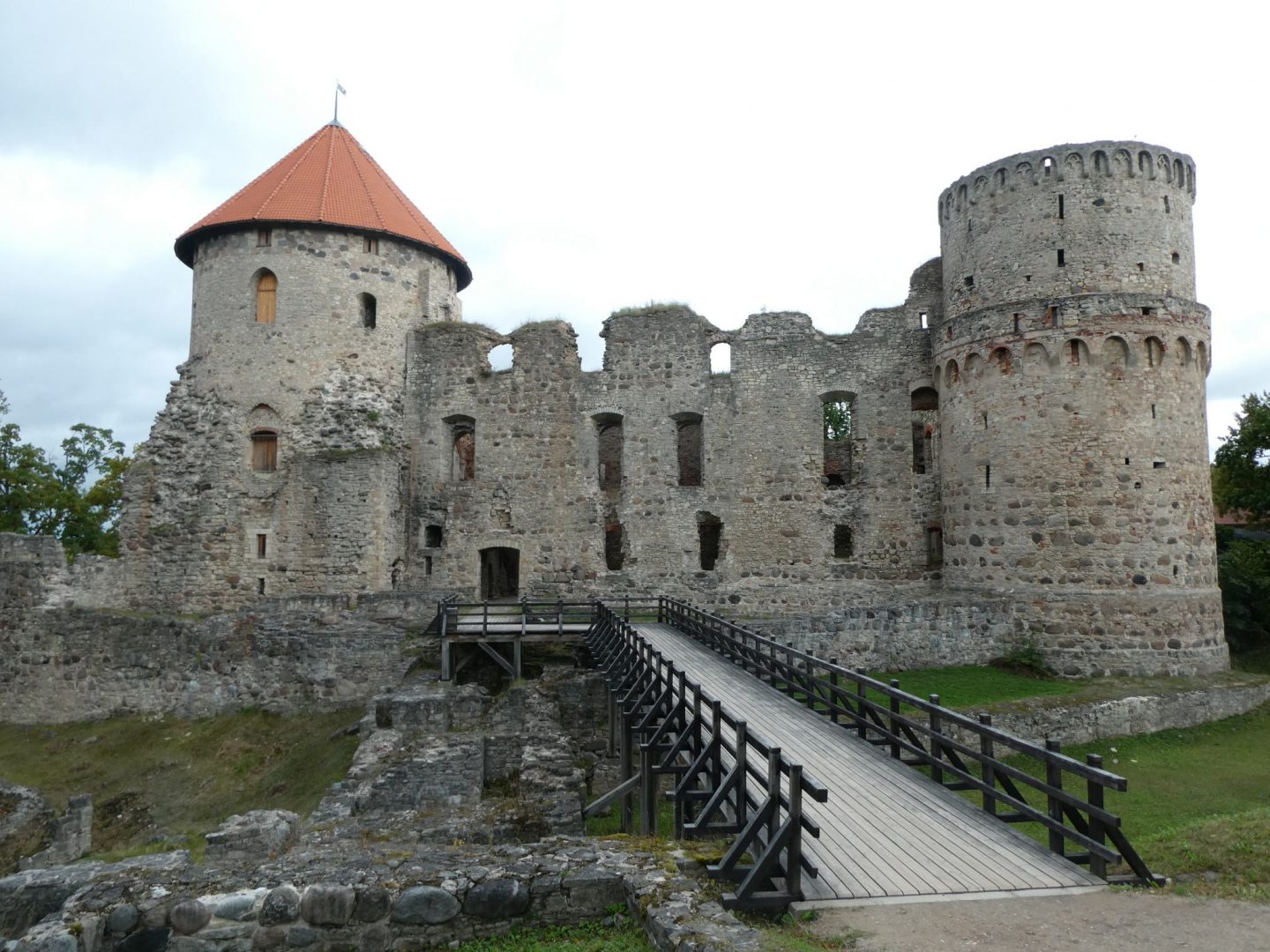 Some of the grounds have been restored as well.  Staff in period costume explain the medieval games once played here.  It’s popular with families with kids, who get to have a turn at various ball games and variations on tug of war.

There’s a recreation of the castle kitchen garden with plants cultivated there 500 years ago.  We were surprised to see that coriander was one of them. 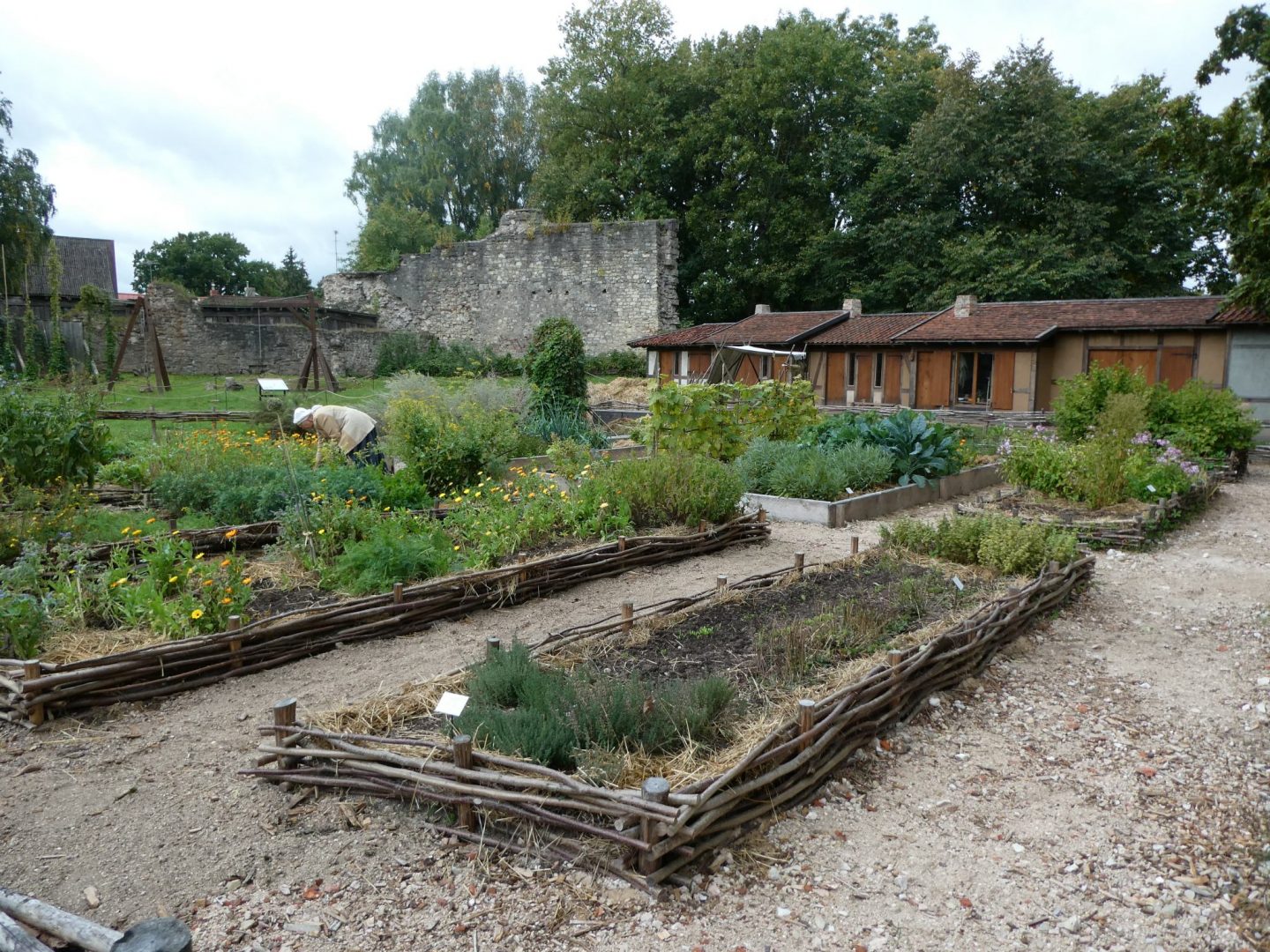 Next door, the imaginatively named New Castle was built in the 1800s as the manor house of the Counts of the German dynasty of Von Sievers.  It’s not so grand, but contains an interesting exhibit of the area’s history. 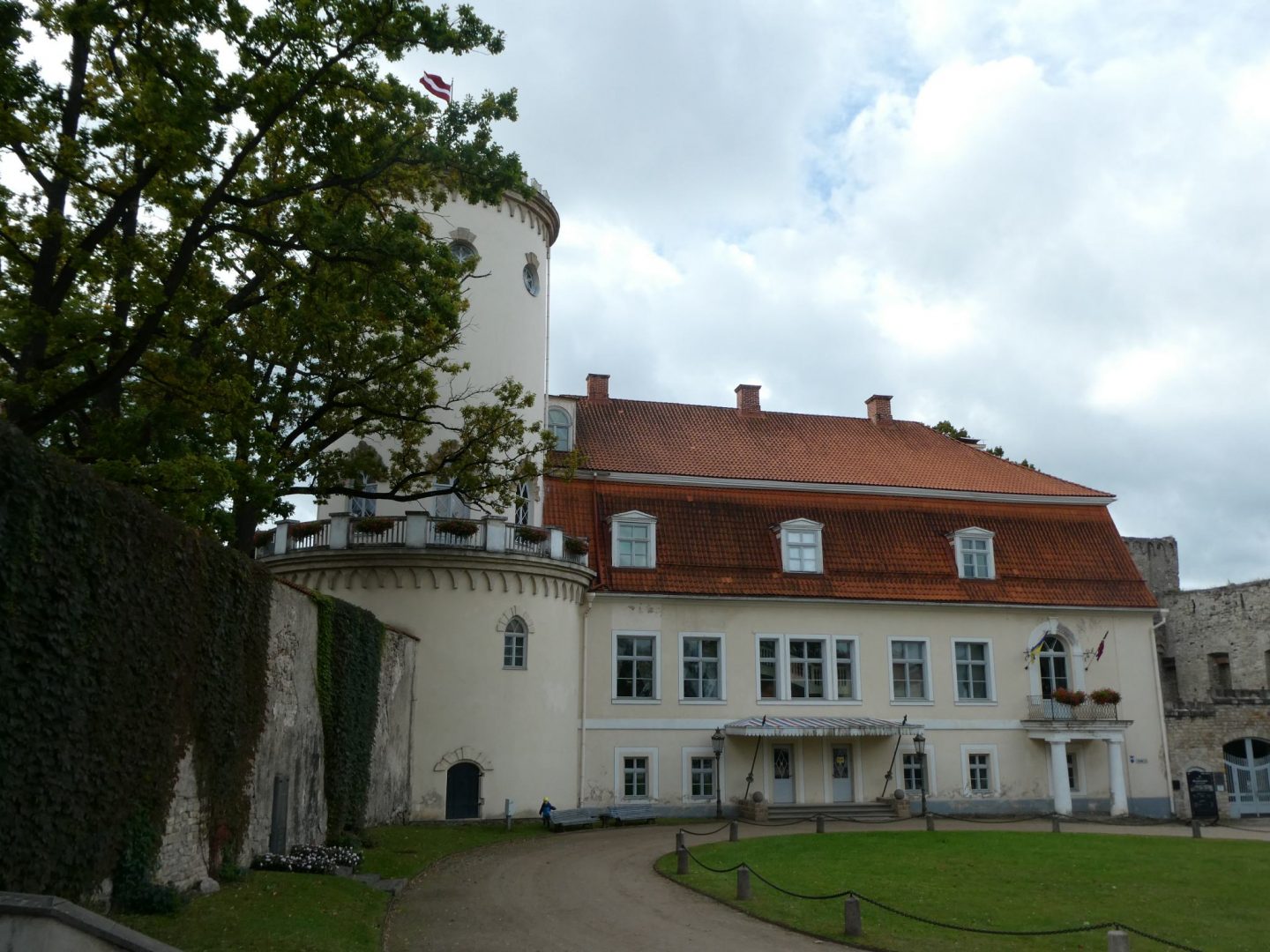 The Von Sievers converted to the Orthodox faith and behind the castle is the Russian Orthodox Church of Transfiguration which they built. 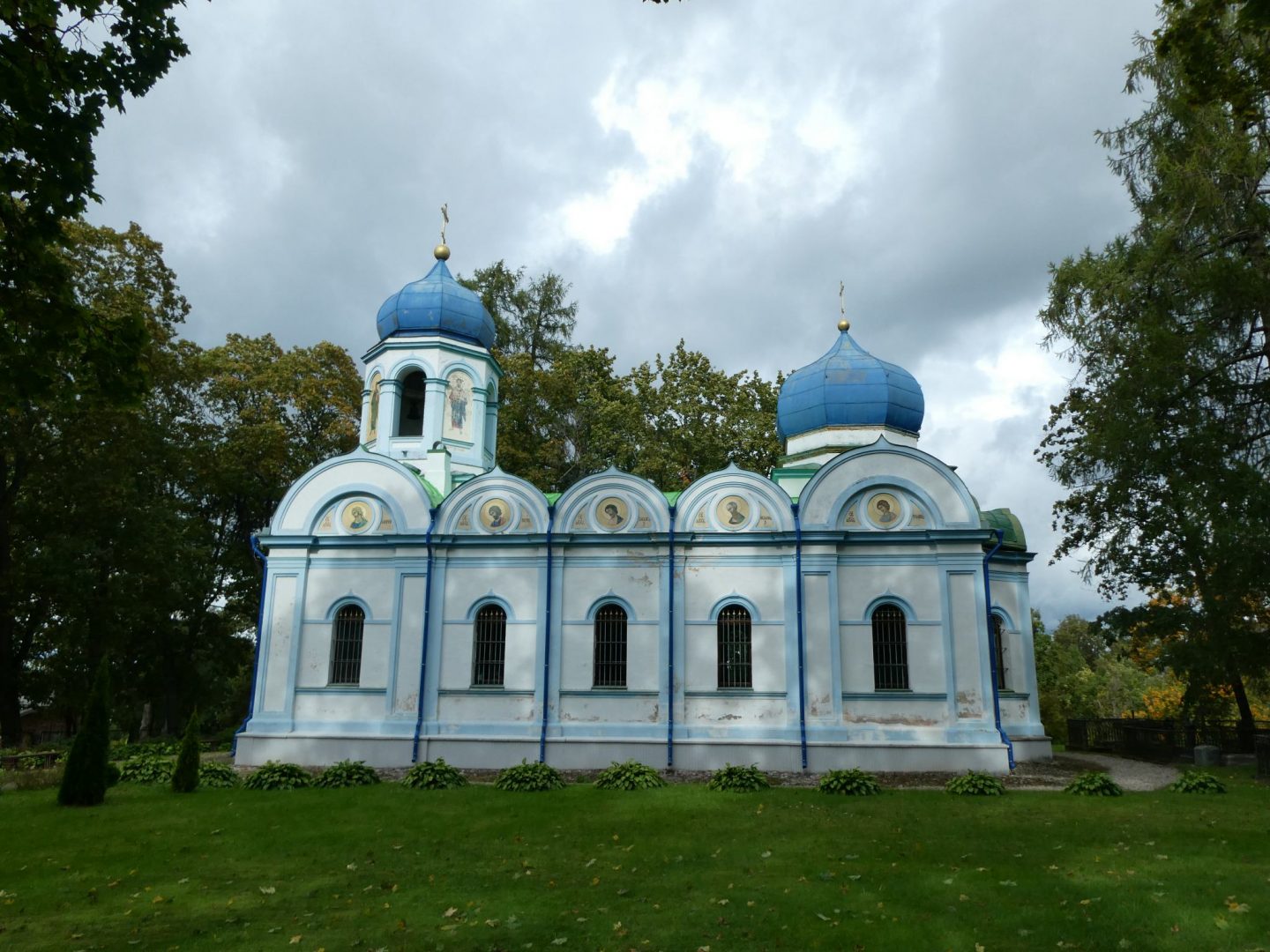 Hidden away in the back lanes are a couple of sobering reminders of recent persecution.    Prior to WWII, the town had a vibrant Jewish community.  When the Soviet army occupied Cesis in June 1941, many were falsely accused of treason and deported to Siberia.  Then in late 1941 when the Nazis ejected the Russians, the remaining Jews were arrested and either murdered in a forest just outside town or forcibly removed Riga where they were killed.  Shockingly, not a single Jewish resident of Cesis survived the holocaust.

Outside some of the buildings where Cesis’ Jewish residents had lived, there is a row of concrete shoes.  They were modelled on shoes donated by current Cesis residents and each group includes men’s, women’s and children’s shoes, reflecting that whole families were lost. 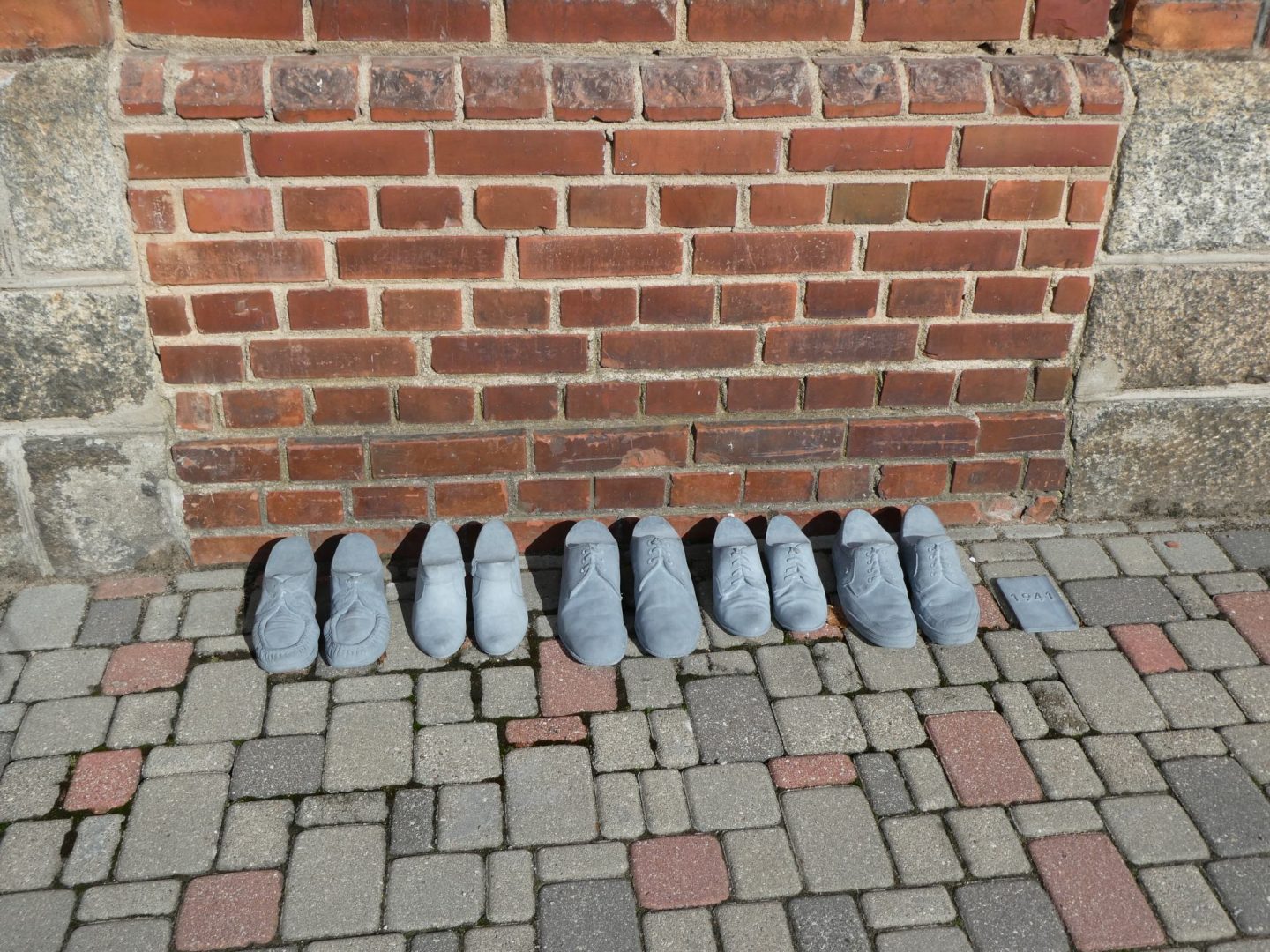 There’s also a museum and memorial to residents lost in the Nazi era and during the Soviet occupation up to 1990, when Latvia regained independence following the collapse of the USSR. 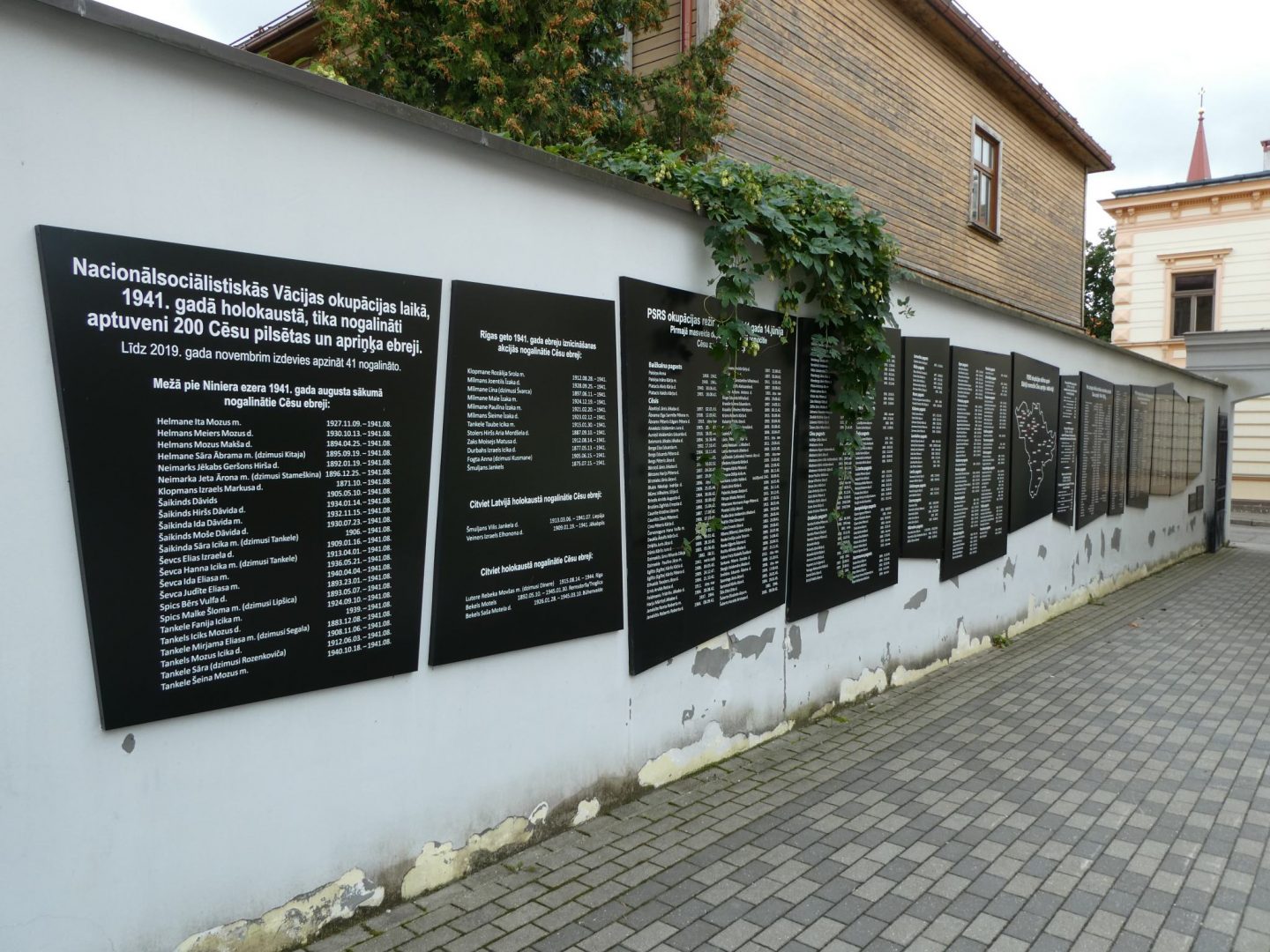 From Cesis we also visited Sigulda.  There’s lots to see here, especially if you like castles.

Like Cesis, there’s a castle constructed by the Livonian Brothers of the Sword.  Also like the Cesis Castle, it was repeatedly damaged and restored over the centuries until finally being abandoned in the early 1700s, and is now the subject of restoration work. 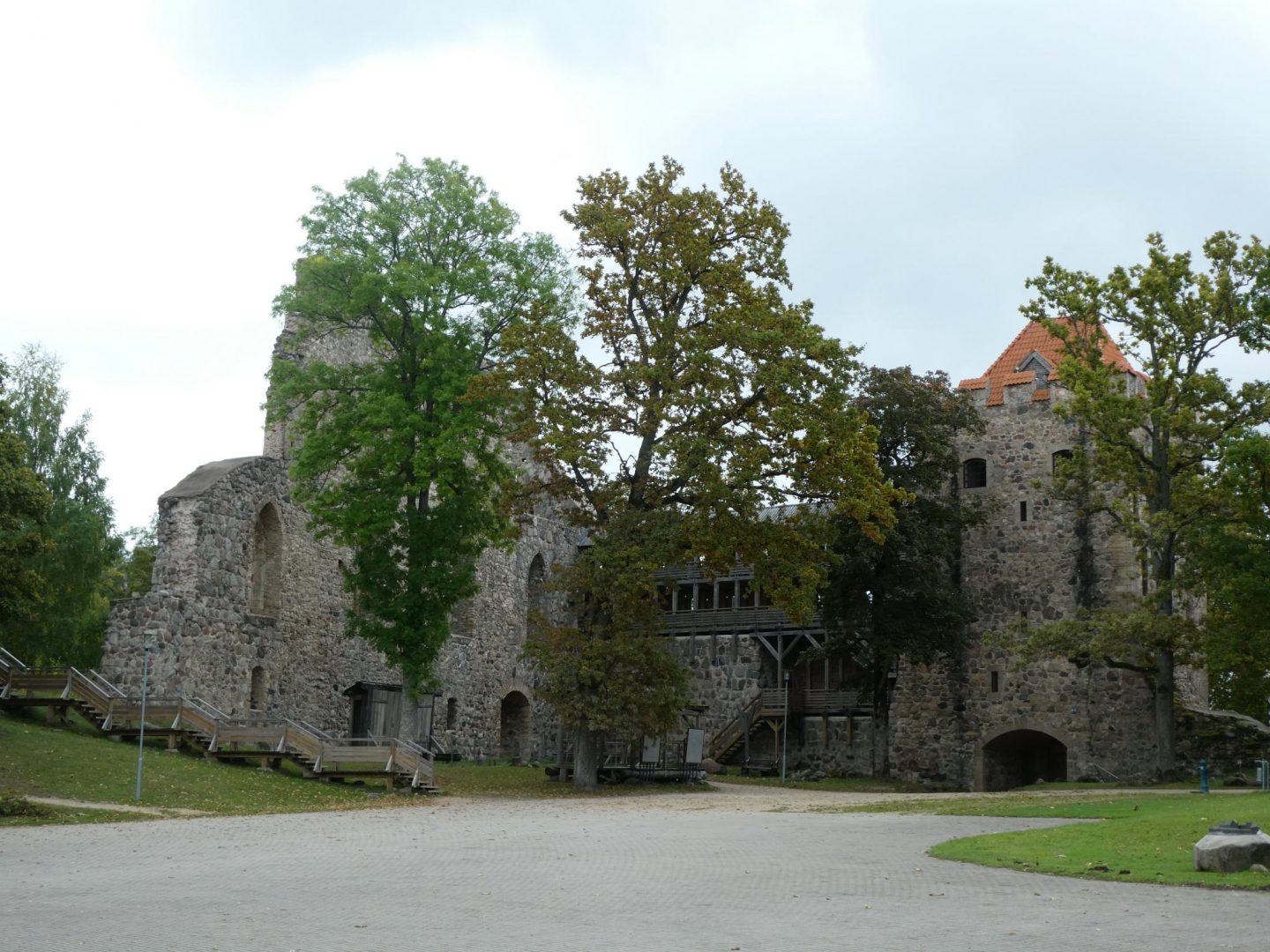 And, again like Cesis, there’s a new castle next door.  This time, an 1878 neo-Gothic manor house, home to Russian Prince Dimitri Kropotkin. 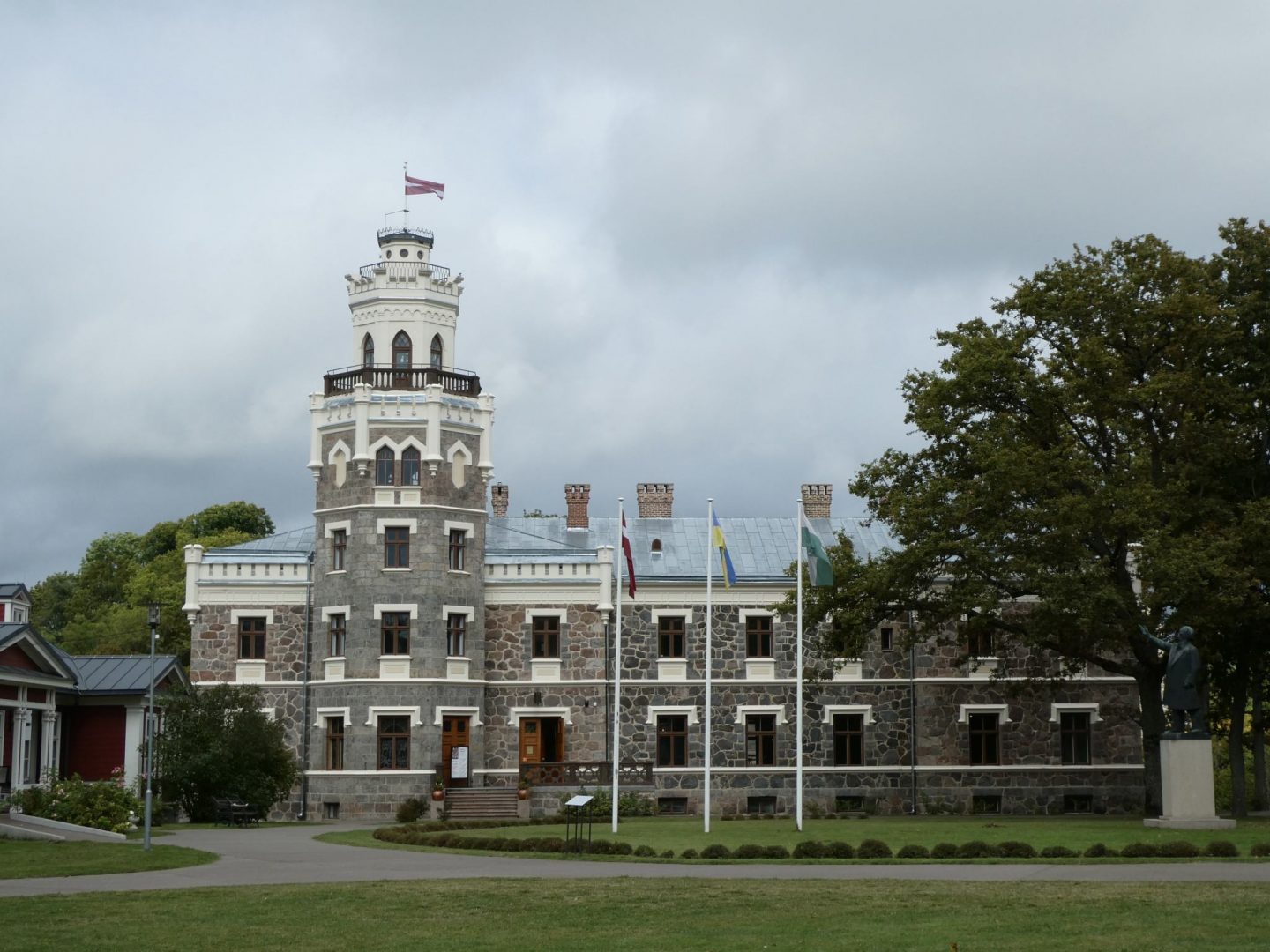 Downhill from the castle, there’s the quirky Walking Stick Park.  Apparently the oldest and best recognised symbol of Sigulda is the wooden walking stick.  In days past, the town’s craftsmen were famous for them and you can even do a walking stick workshop and make your own.  We resisted the temptation. 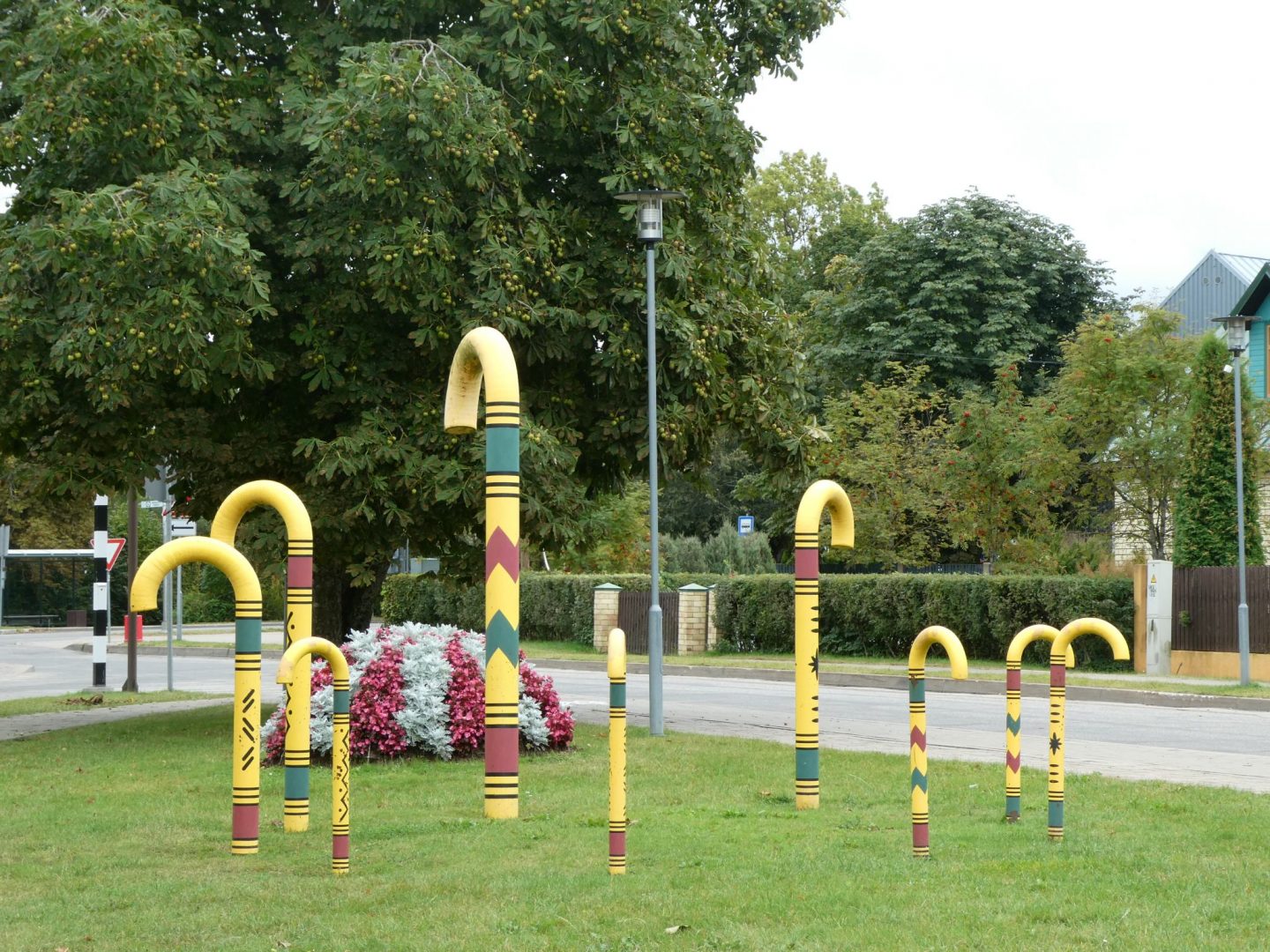 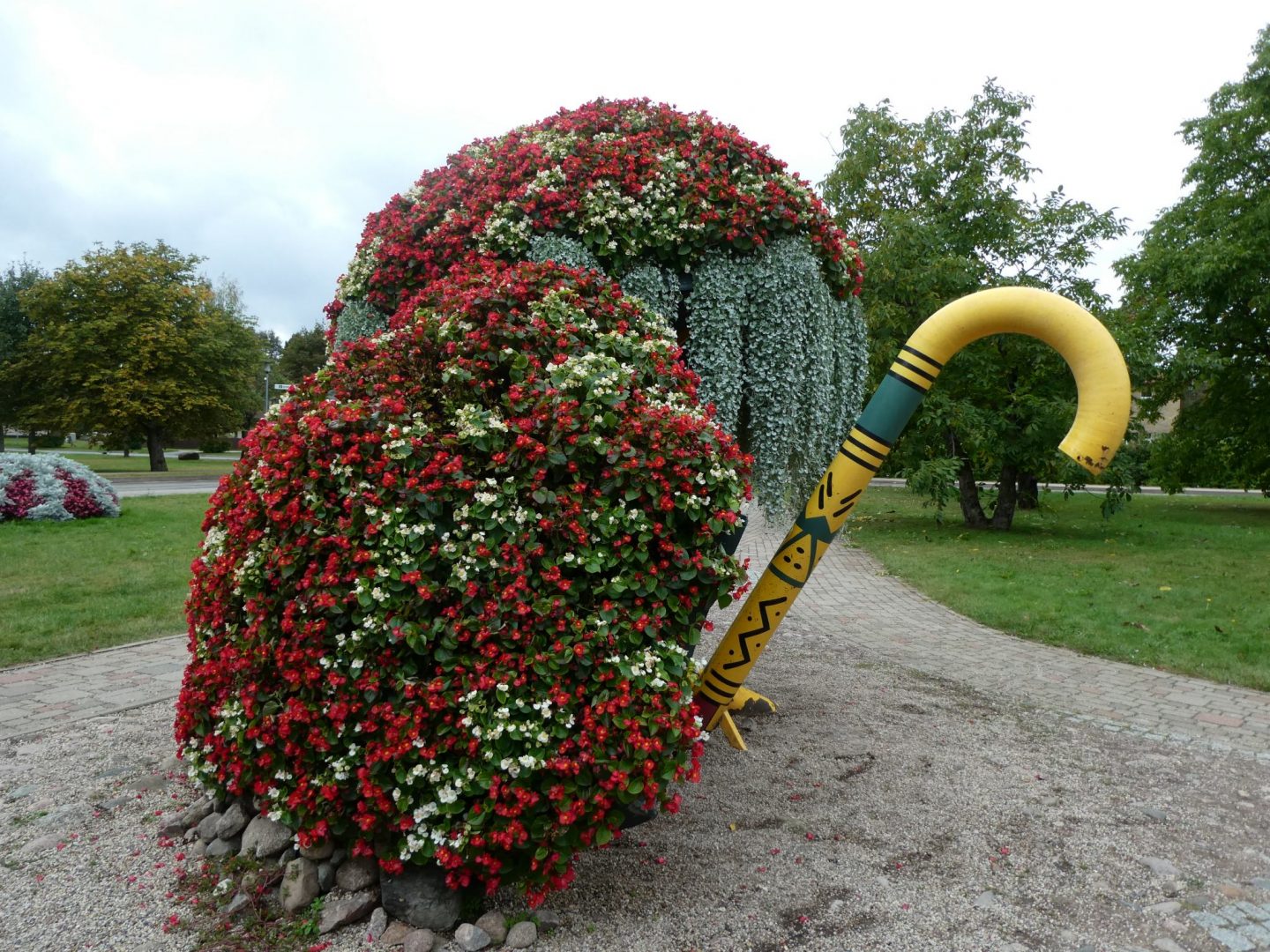 The town sits on the edge of a dramatic ravine.  A cable car trundles across to Krumulda Manor, built around 1822. 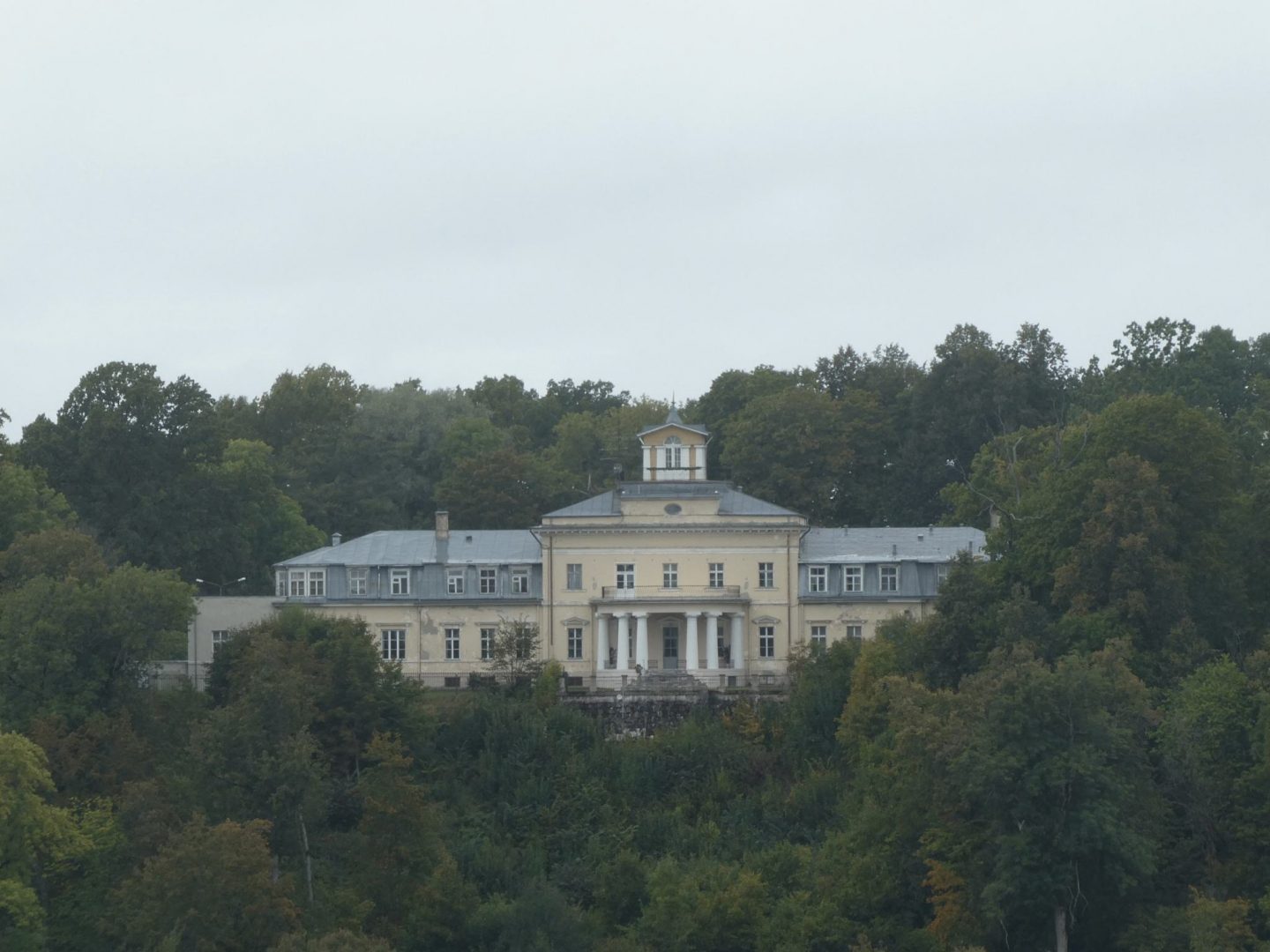 In the 1920s the Red Cross operated a rehabilitation centre for tuberculosis sufferers here.  The main treatment seems to have been taking in the air and sunshine while lounging outside these summer pavilions. 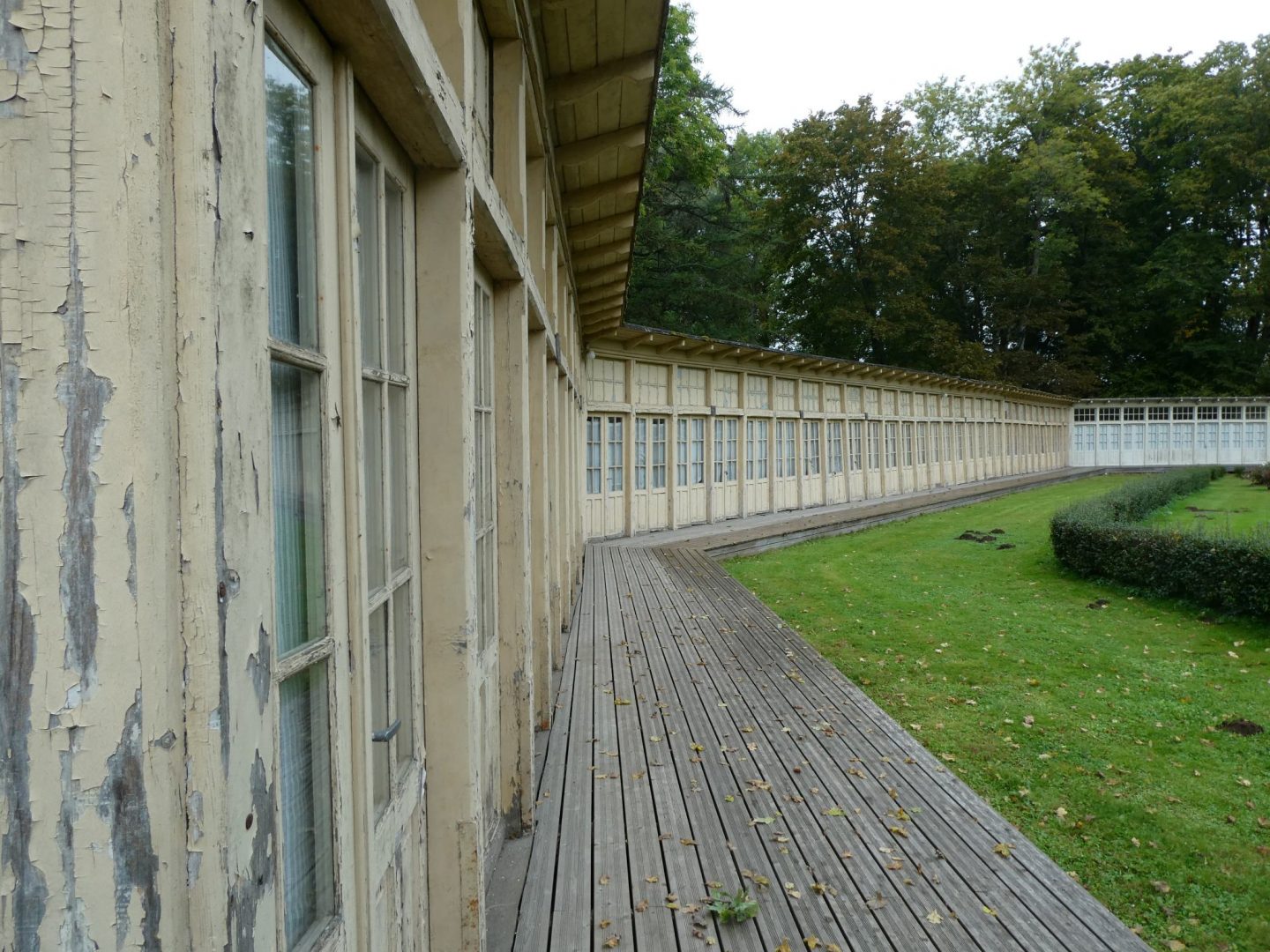 From there, the Serpentine Road is a walking path which winds through the forest, up and down the hills for several kilometres.  Along the way is the Gutmanis Cave.  It’s only 12 metres wide, 1o metres high and 18.8 metres deep but it’s the widest and longest cave in all the Baltics.  As such, it’s been a tourist attraction since the 1700s and is covered by extraordinary graffiti.  As well as the usual ‘Janis was here’ type stuff, there’s lots of ‘made to order’ graffiti done by stone craftsmen who would, for payment, carve the coats of arms and names of wealthy barons and estate owners who visited the cave. 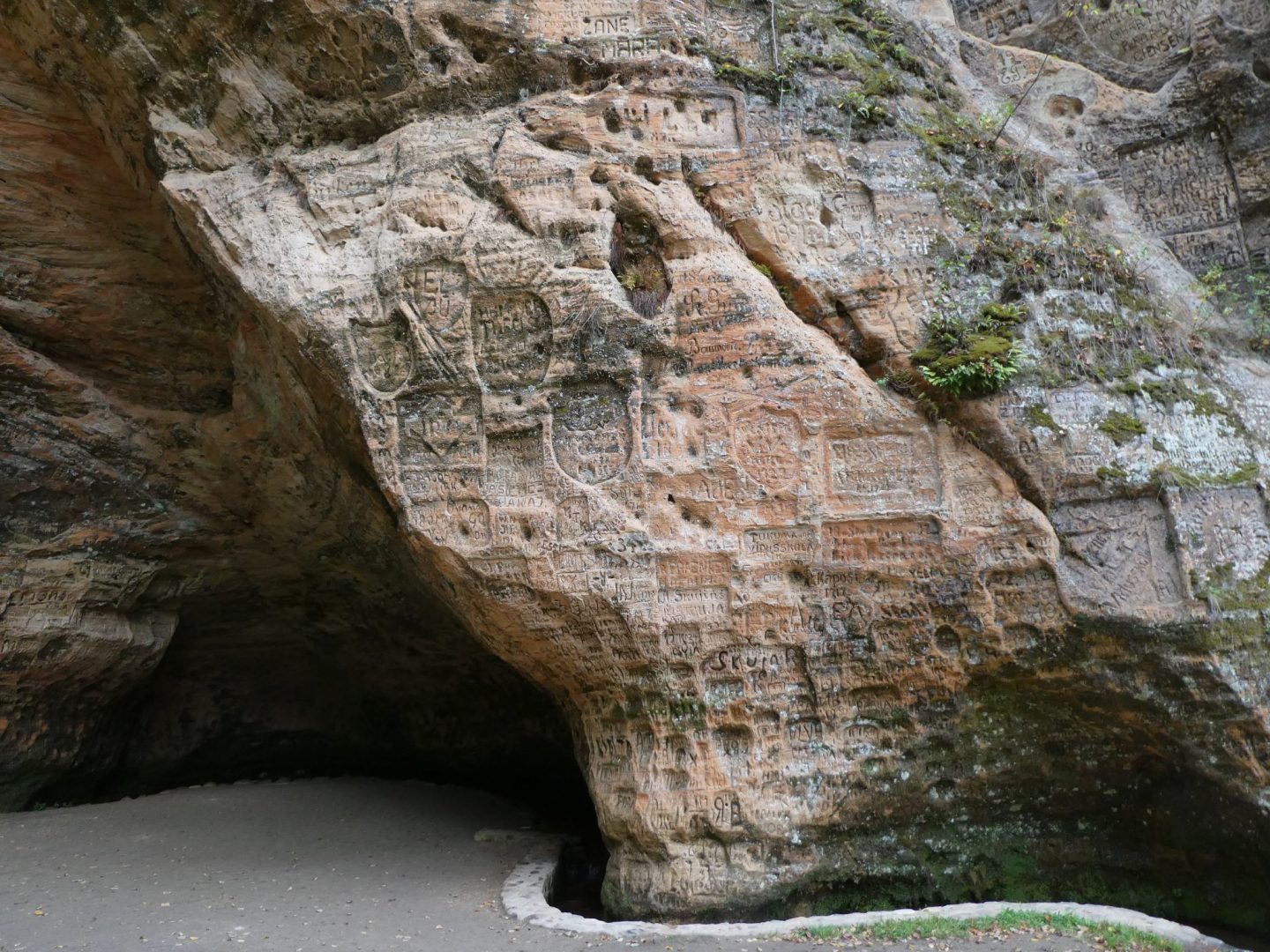 The cave also has renown within Latvia as the location for the final act in the much-loved story of the Rose of Turaida.  The beautiful Rose, daughter of the local castle secretary, was in love with Victor, the castle gardener, and would secretly meet him at the cave.

Trouble arrived when she also caught the eye of an army deserter, Jakubowsky.  He faked a note from Victor to lure her to the cave.  She rebuffed his advances.  Choosing death over defilement, she convinced him she had a magic scarf that would protect her and invited him to swing his sword at her.  He did, and she died.  The remorseful Jakubowsky then hung himself in the forest.  The flaw in this story is obvious – with both dead, how does anyone know what happened?

Nevertheless, she is a national heroine.  Her grave is in the grounds of the next castle. 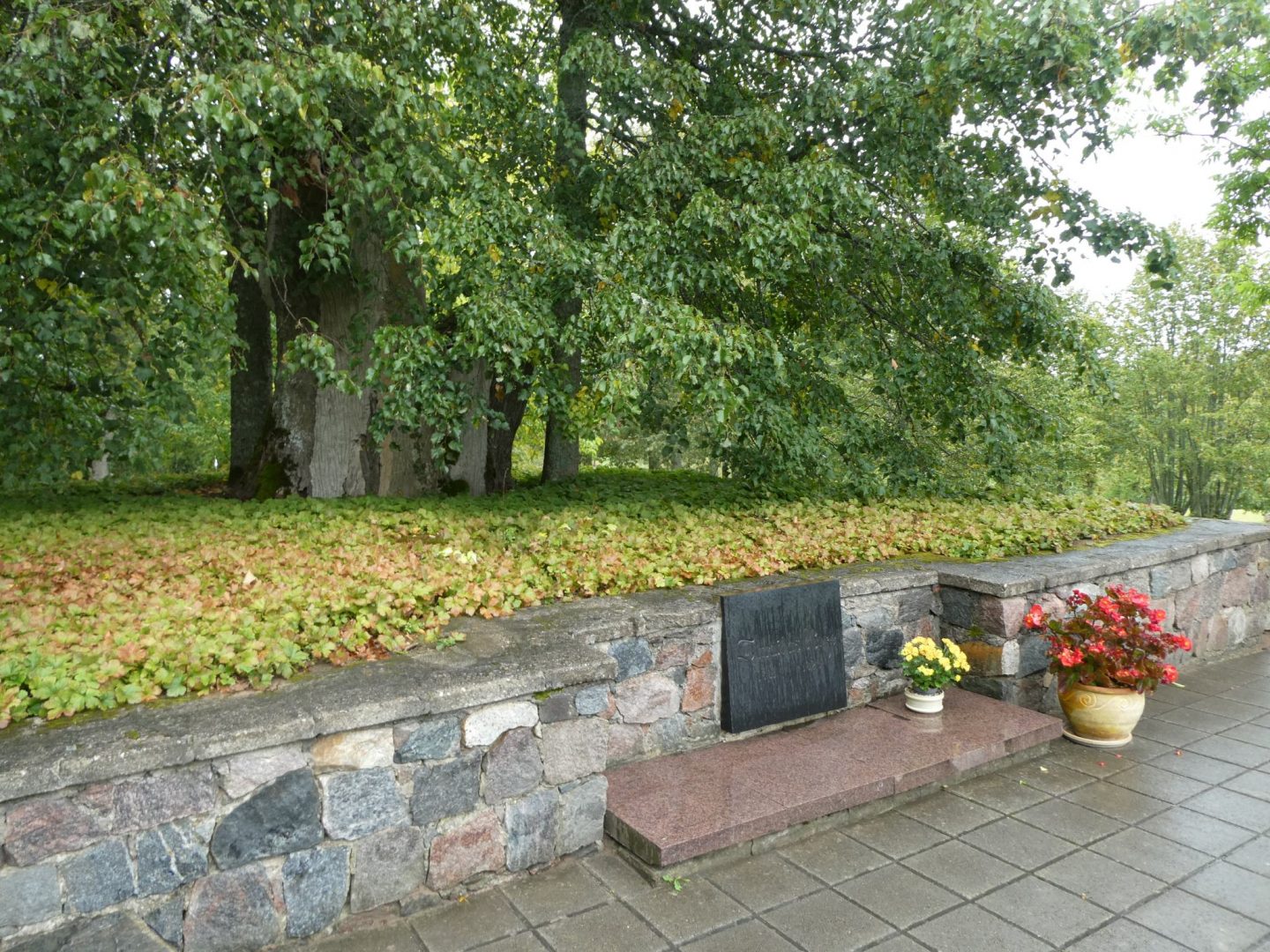 The end of the forest hike emerges at Turaida Castle.  Yes, it’s another product of the Livonian Brothers of the Sword built around the same time as the others we’ve mentioned.  It, too, fell into ruin in the 1700s, due to fire. Restoration work here has been extensive and there’s a whole estate to be explored including reproductions of a blacksmith workshop and other cottage industries.

Turaida is the most visited museum in Latvia, but we must say we preferred Cesis.  Its museum presents its content in a much more accessible way – at least for those of us with virtually no knowledge of Latvian Middle Ages history.  Also, the restoration work at Turaida is so extensive, it almost feels completely new.  It lacks the atmosphere of an ancient castle. 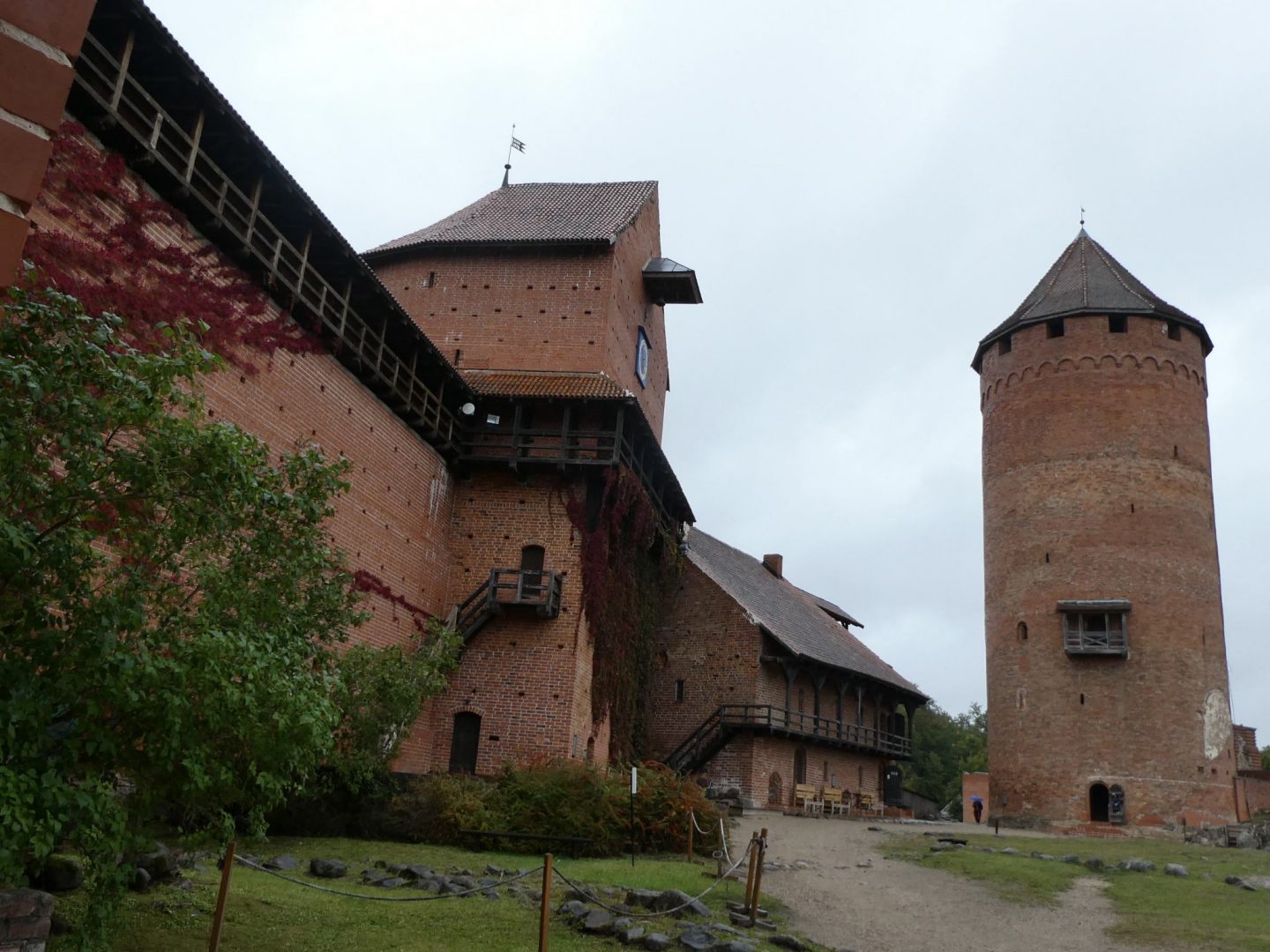 Five castles in two towns.  Plus some good hiking and a few local legends.  If Latvian castles are your thing, this is the place to be!