The town of Riga was established in 1201 by a German bishop as a staging post for the crusade to Christianise the ‘northern heathens’ – the Balts, Slavs and Finnish peoples.  The bishop commissioned Riga Cathedral, also known as the Dome Cathedral in 1211, making it one of the oldest medieval buildings in the Baltics.

In 1721 the spire was destroyed in a fire.  Legend has it that when it was rebuilt in 1746,  the builders threw a glass from the top, announcing that the greater the number of shards the glass broke into, the longer the spire would survive.  The glass landed on straw and only broke in half.  The spire was destroyed in WWII.  Rebuilt again, the ceremony was repeated and this time the glass shattered into many splinters.  If two pieces equals 200 years, the future looks long indeed for the current spire. 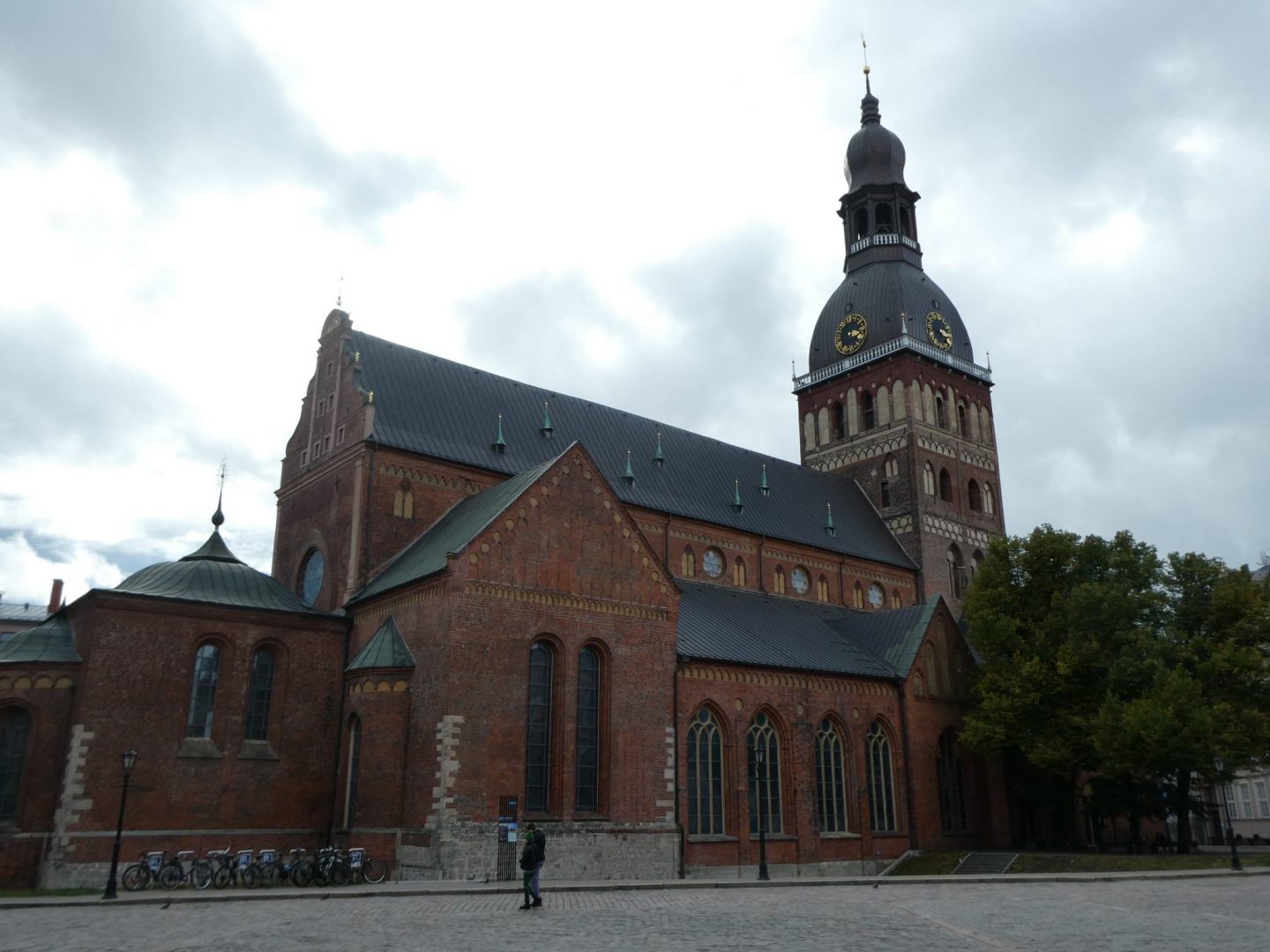 The exterior of the church is relatively austere, but inside is what is believed to be the biggest and most ornate pulpit in all of Latvia. 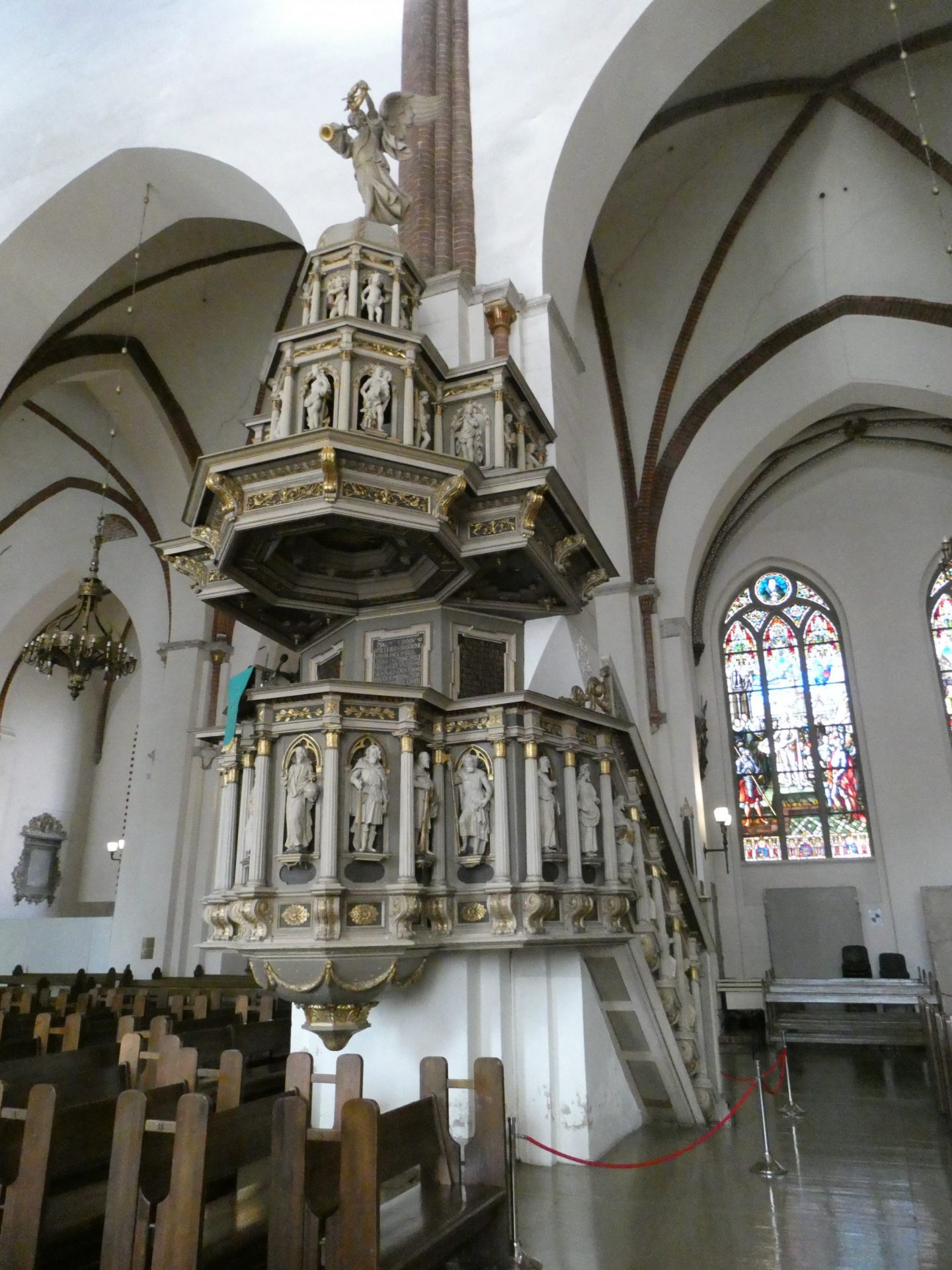 And a 6,768 pipe organ.  The church survived the Soviet era  because it was converted into a concert hall.  It’s now safely back in the hands of its Lutheran custodians. 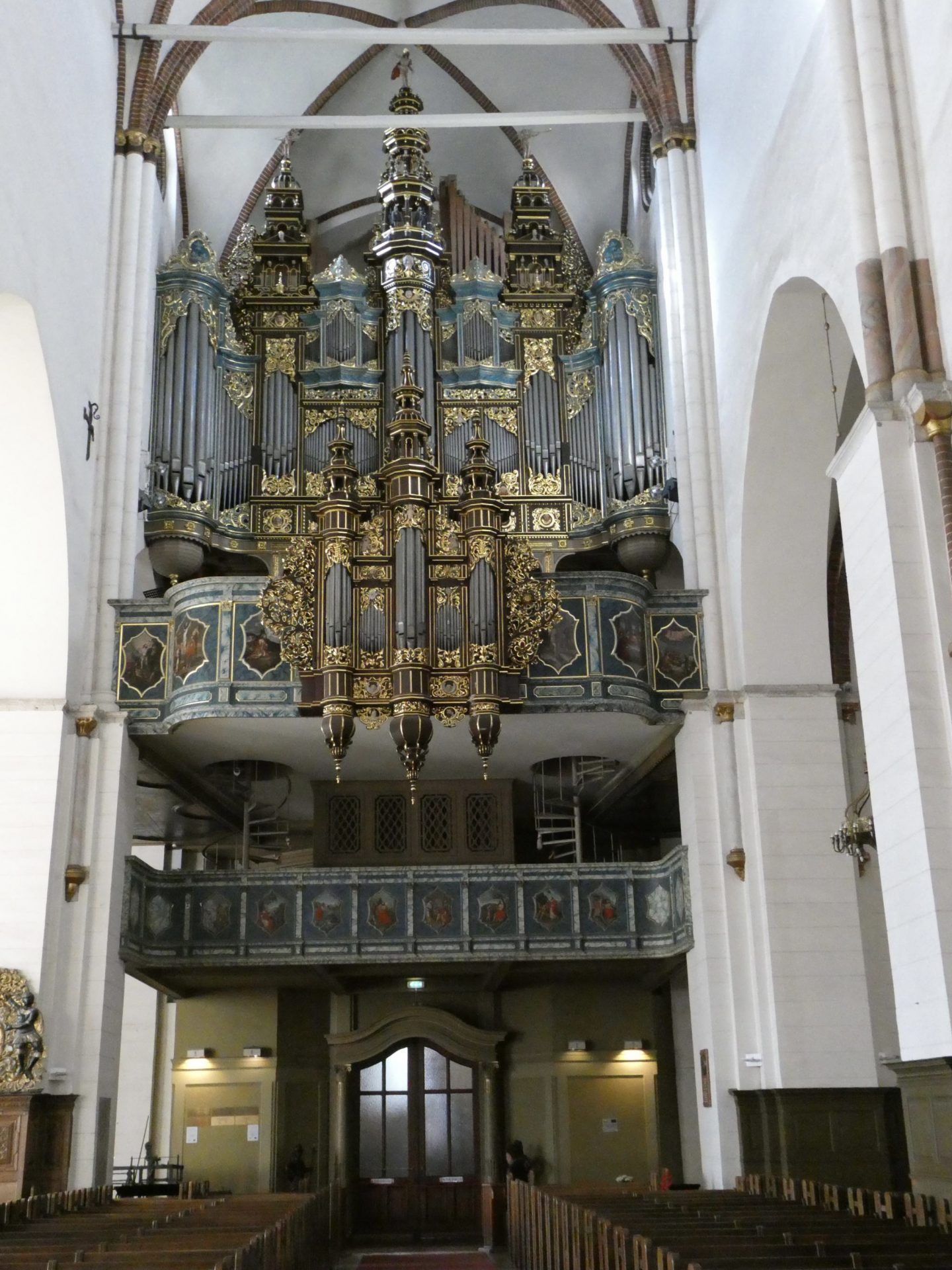 When first established, Riga was governed by the Livonian Brothers of the Sword, the order that also built the castles we discussed in our previous post on Cesis and Sigulda.  Riga Castle was built in 1330 to replace an earlier one which had been destroyed when Rigans rebelled against their Livonian overlords.  It’s passed through many hands as ruling empires came and went.  Fittingly, it’s now the residence of the President. 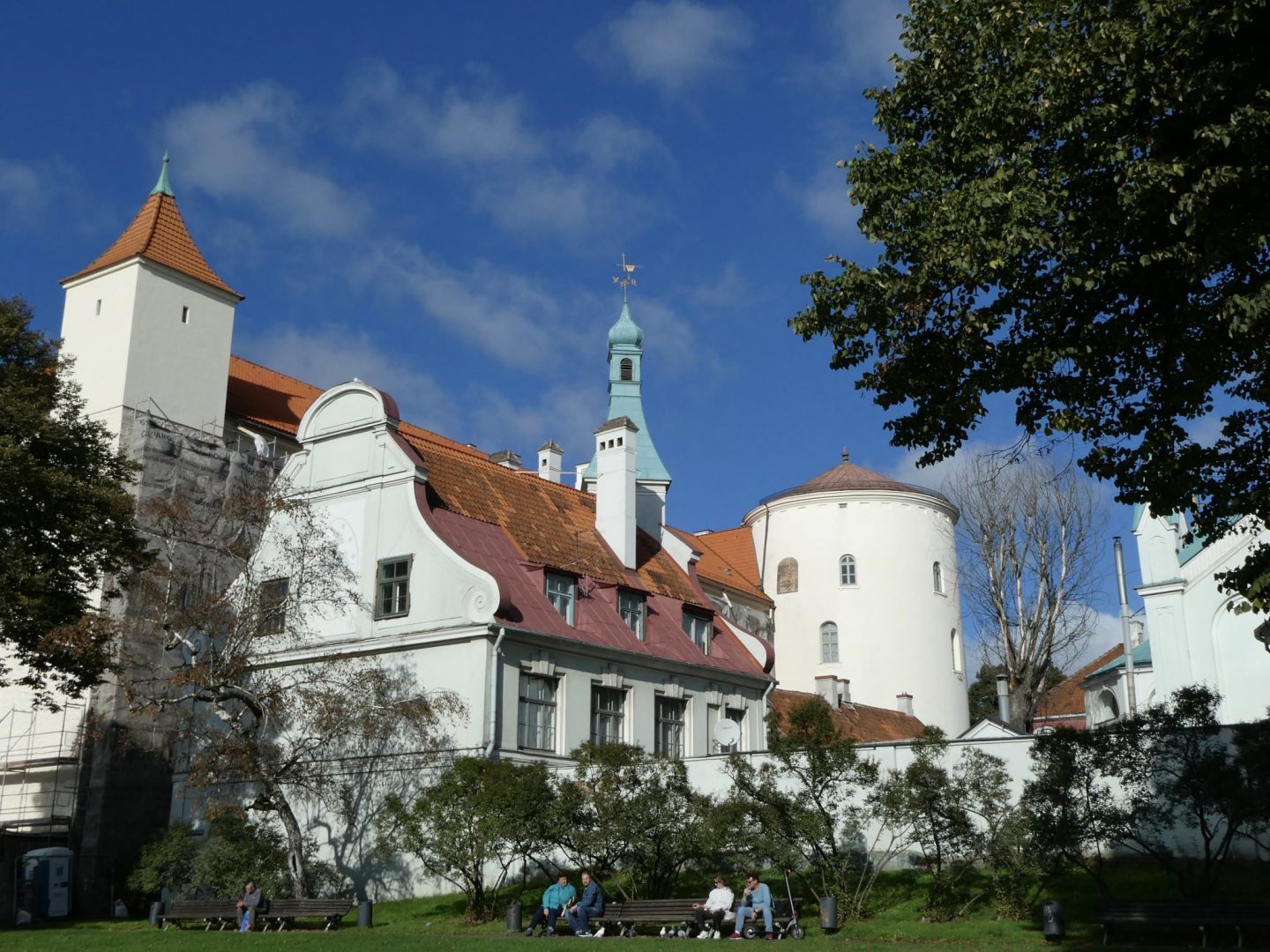 From the 1300s, Riga developed into an important trading conduit between proto-Russia and the West.  The town hall square was the centre of economic activity and site of the town hall.  Everything in the square, and much of the Old Town around it, was destroyed by bombing in WWII.  But replica work has been sympathetic.

The current Town Hall was completed in 2003 in the style of the previous one. 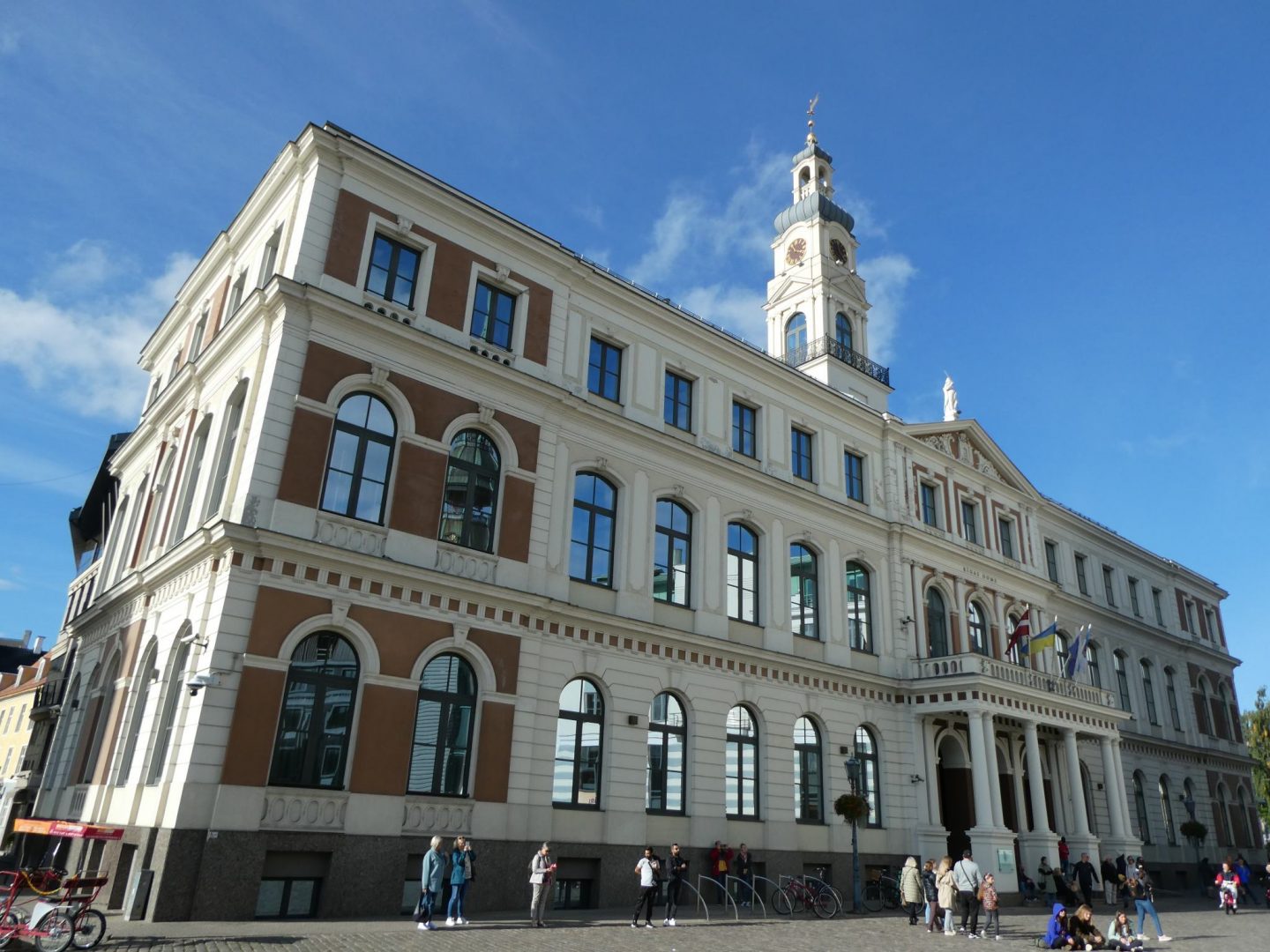 In our post on Tallin we mentioned the Brotherhood of the Blackheads, the merchant guild for unmarried men.  A branch of the Brotherhood was established in Riga in 1344.  Their very handsome guild hall was bombed in 1941 and levelled by the Soviets in 1949.  Detailed plans survived and an exact replica was built in its original place on the town square in 2001 in time for Riga’s official 800th birthday. 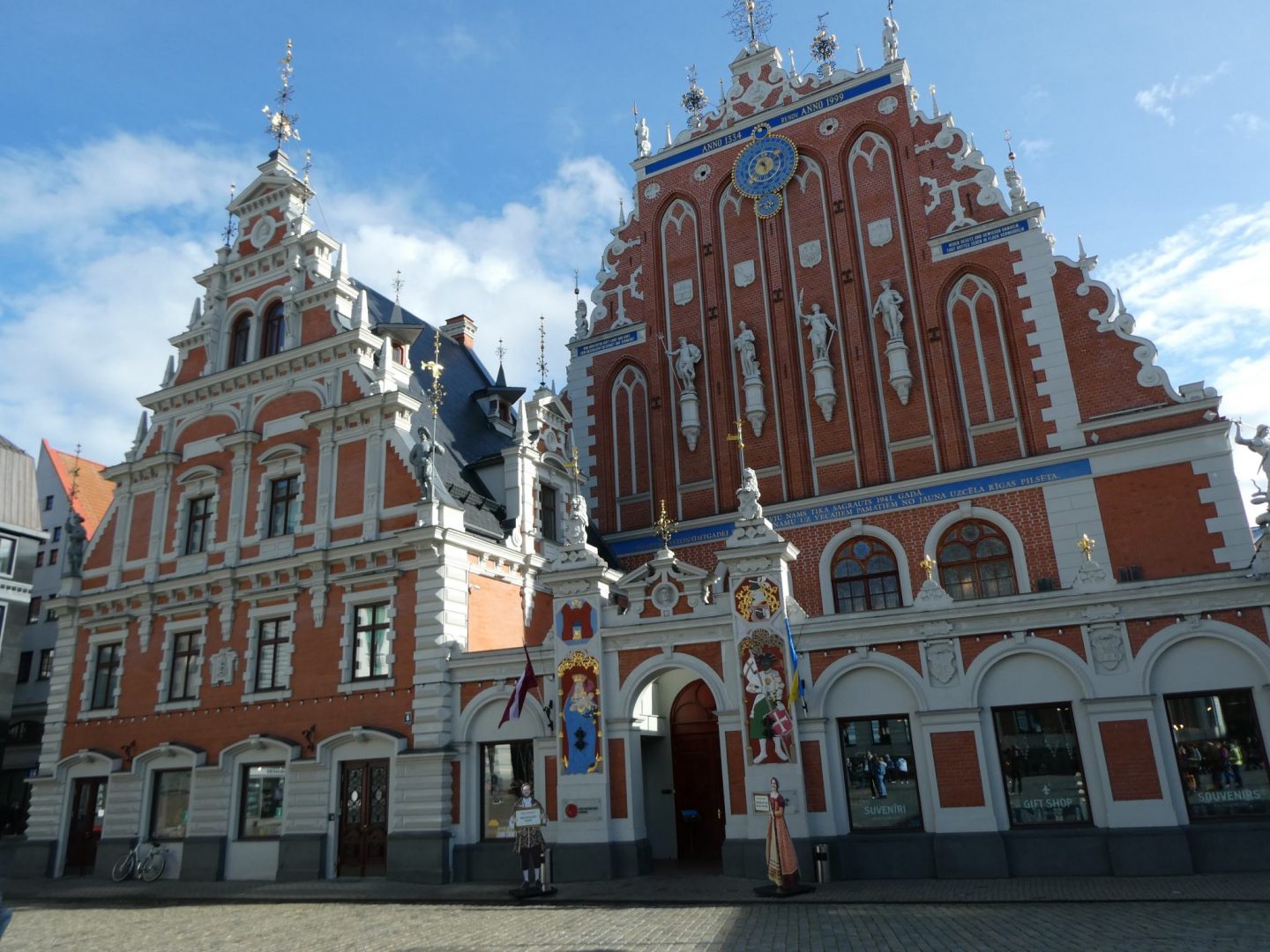 And otherwise, repair and restoration has made Riga’s Old Town one of the biggest of the medieval town centres in the Baltics.  Lots of narrow cobblestone streets to wander, lots of cafes, churches, shops and restaurants to consider.  It’s very touristy but at least at this time of year, not too packed. 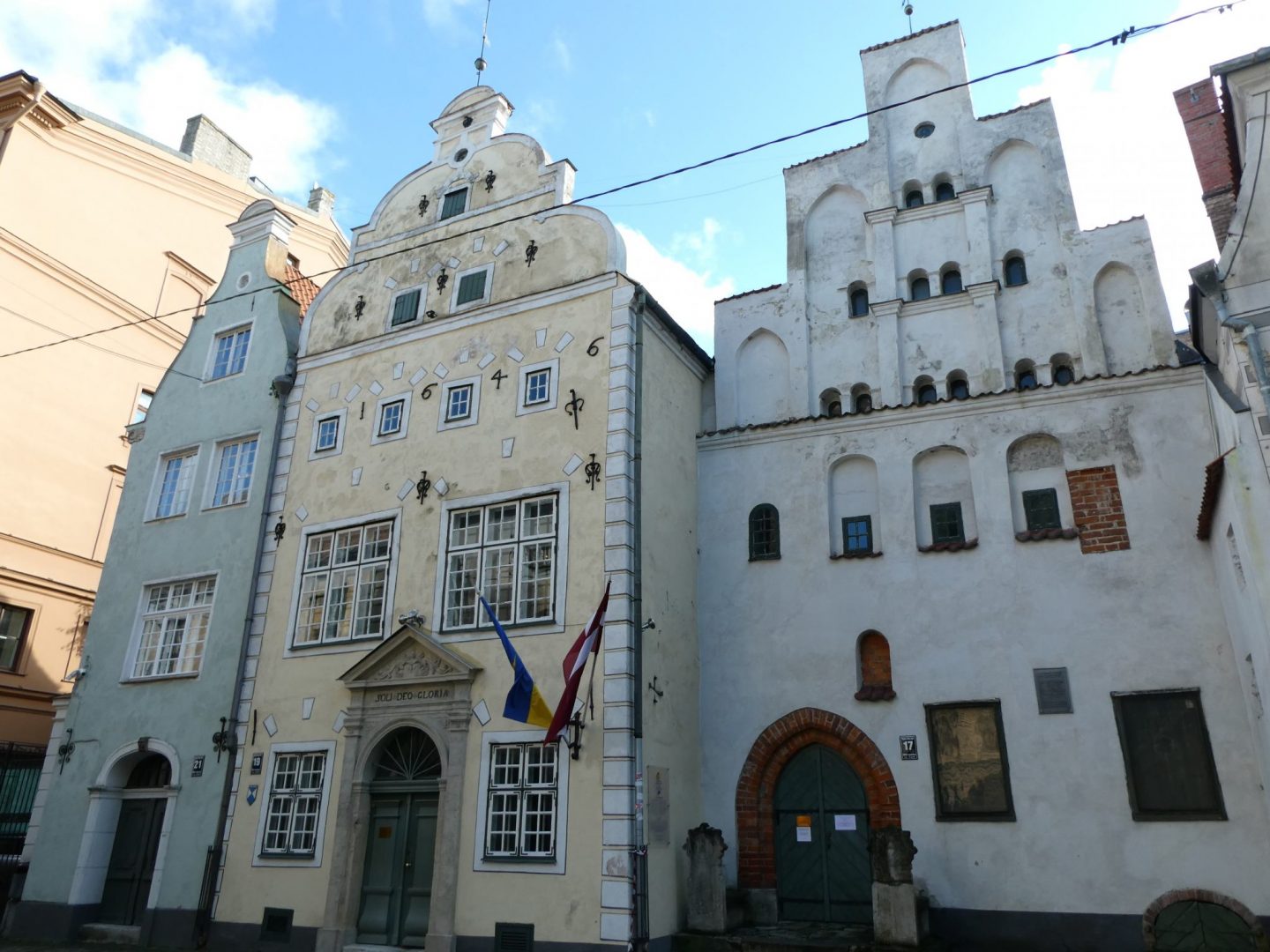 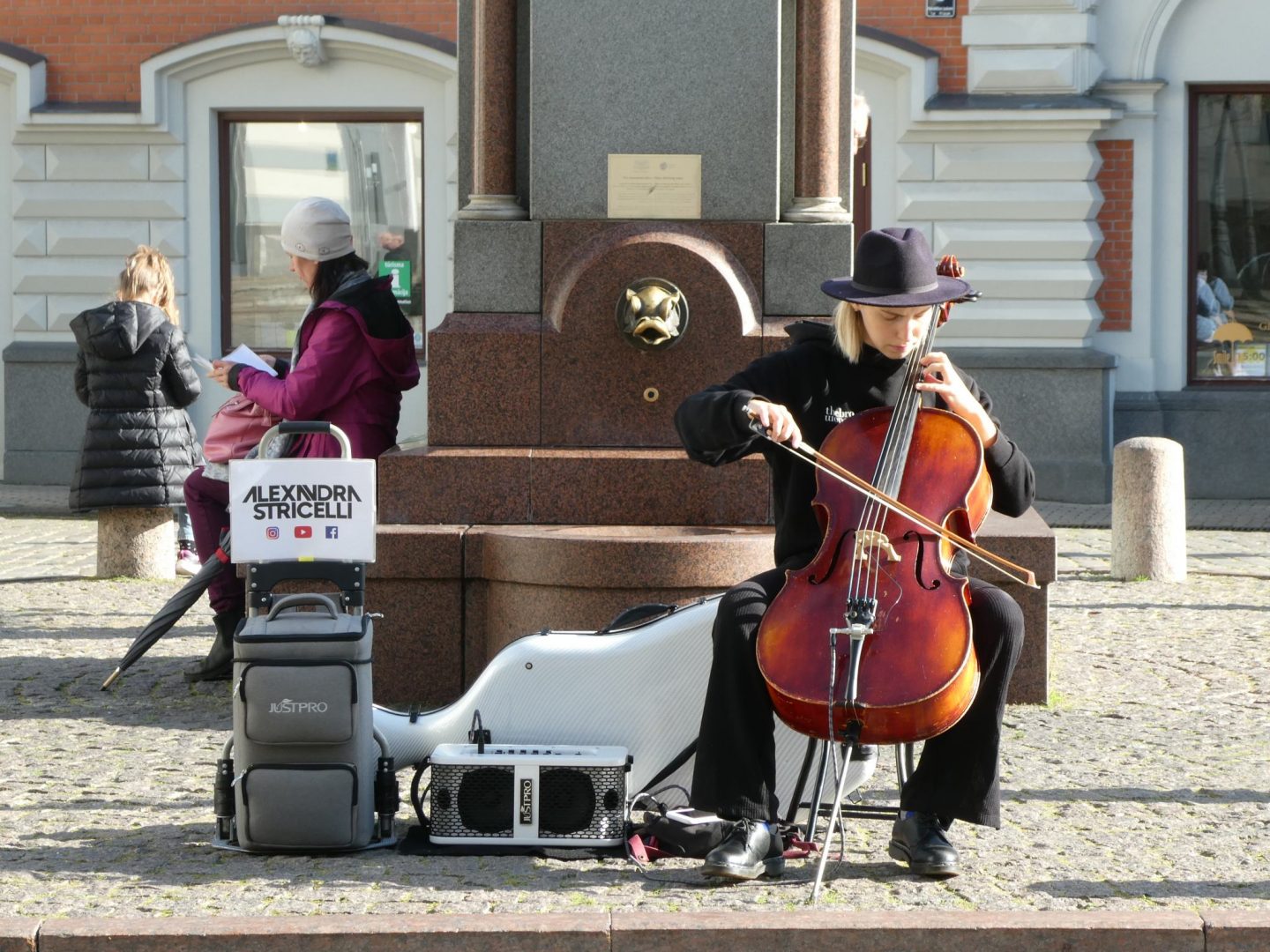 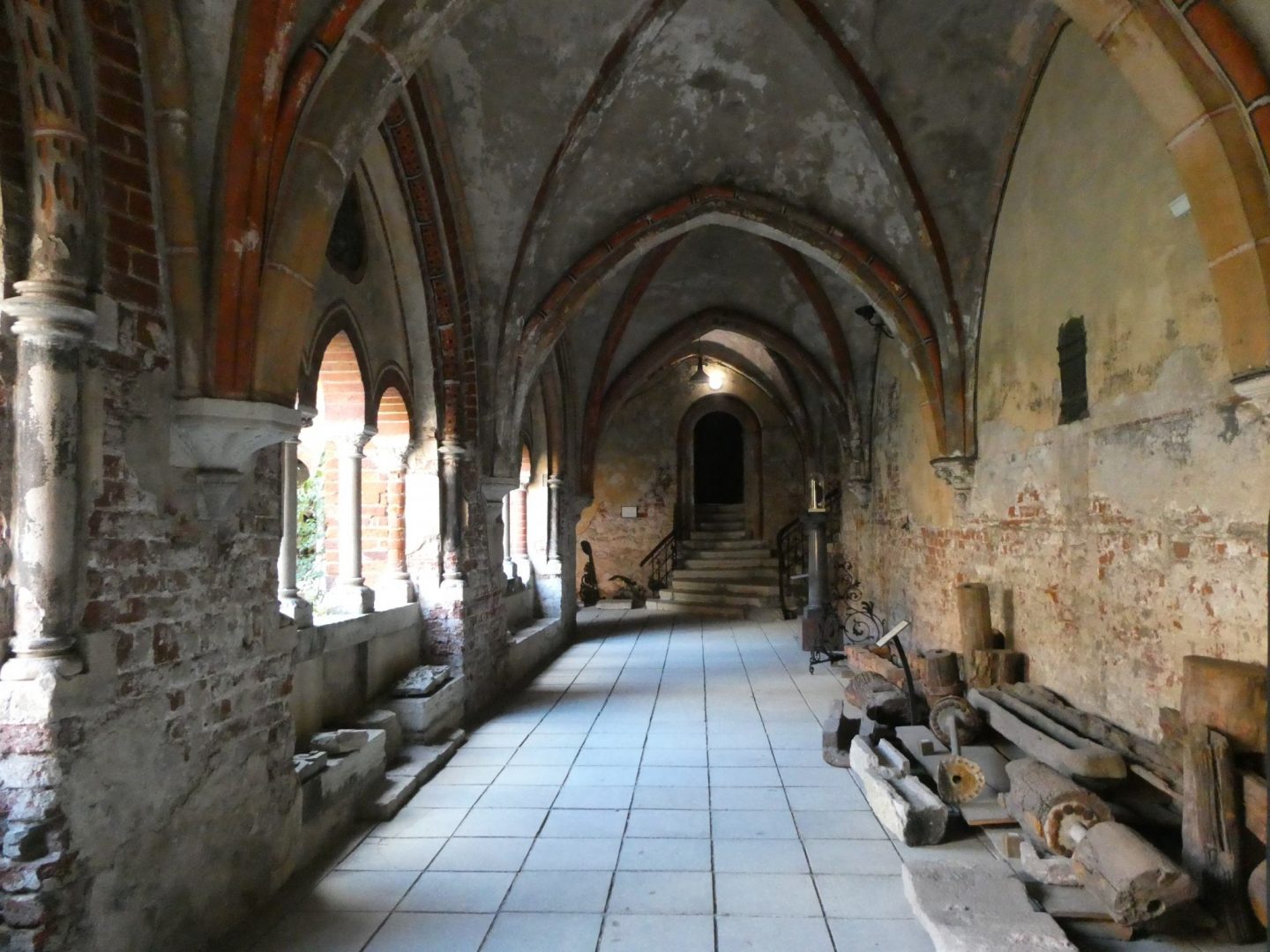 Riga fell to the Swedes in 1621 and grew to become the biggest town in the Swedish Empire, eclipsing even Stockholm.  The Swedes established a barracks outside the Old Town and turned Riga into a walled city.  Unlike Tallin, very little of the walls and fortifications remain today.

The Swedish Gate is the only gate still standing.  According to one legend, a young local woman would meet her Swedish soldier lover at the gate.  Such liaisons were strictly forbidden and one day, when the soldier failed to arrive, locals snatched her from the street and bricked her into the gate wall.  At midnight her cries can be heard by those whose love is pure and unconditional. 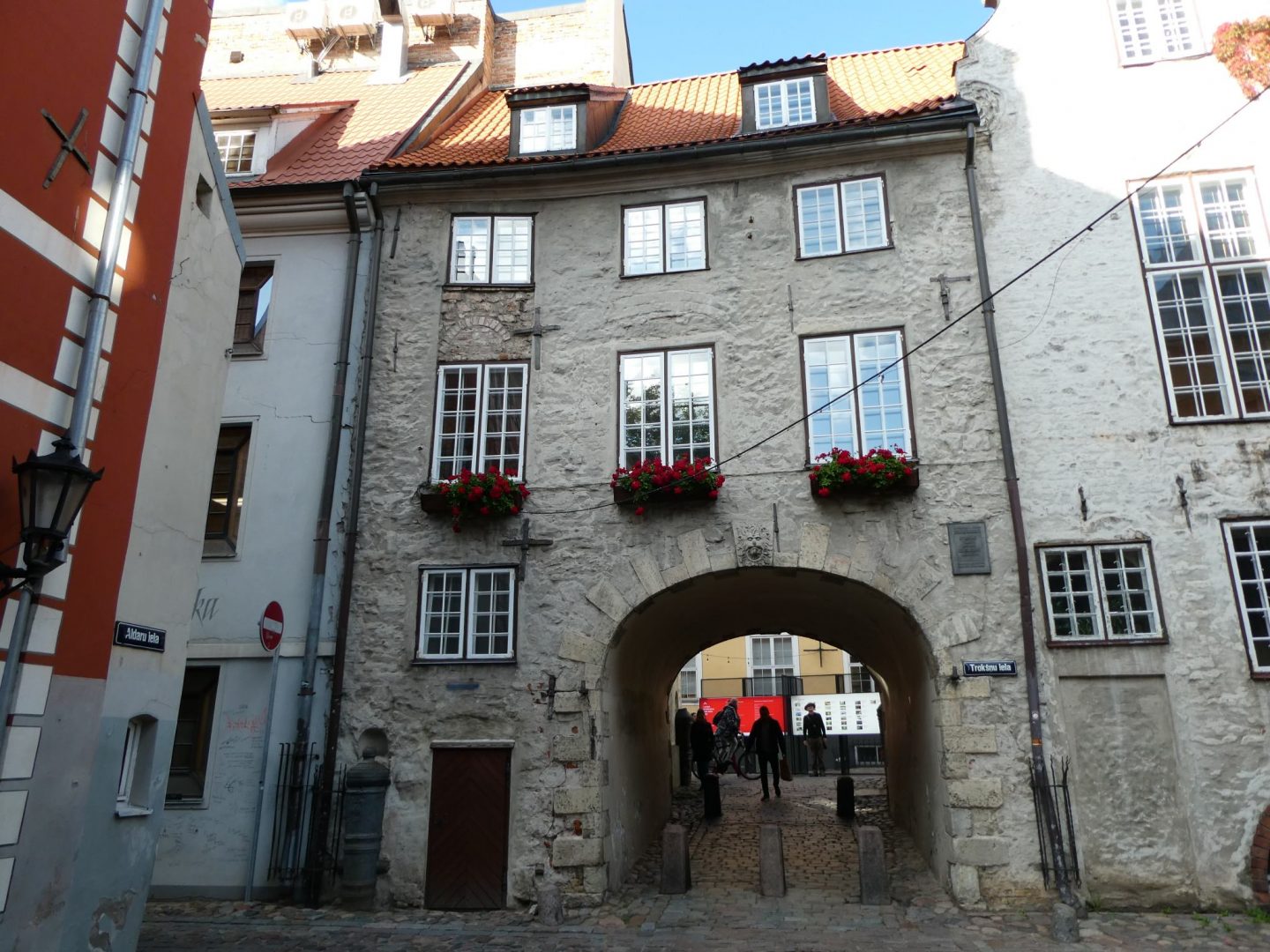 Also during the Swedish era, the city’s fresh market became too big to remain in the Old Town.  In 1570 it was moved to its current location just over the river, where it has  traded continuously since.  It’s now one of the biggest fresh markets in the Baltics, housed in several enormous WWI Zeppelin hangars and outdoors in the surrounding plazas.  If you can bake, smoke, pickle or eat it fresh, it will be here.  You could spend hours wandering around.  We certainly did. 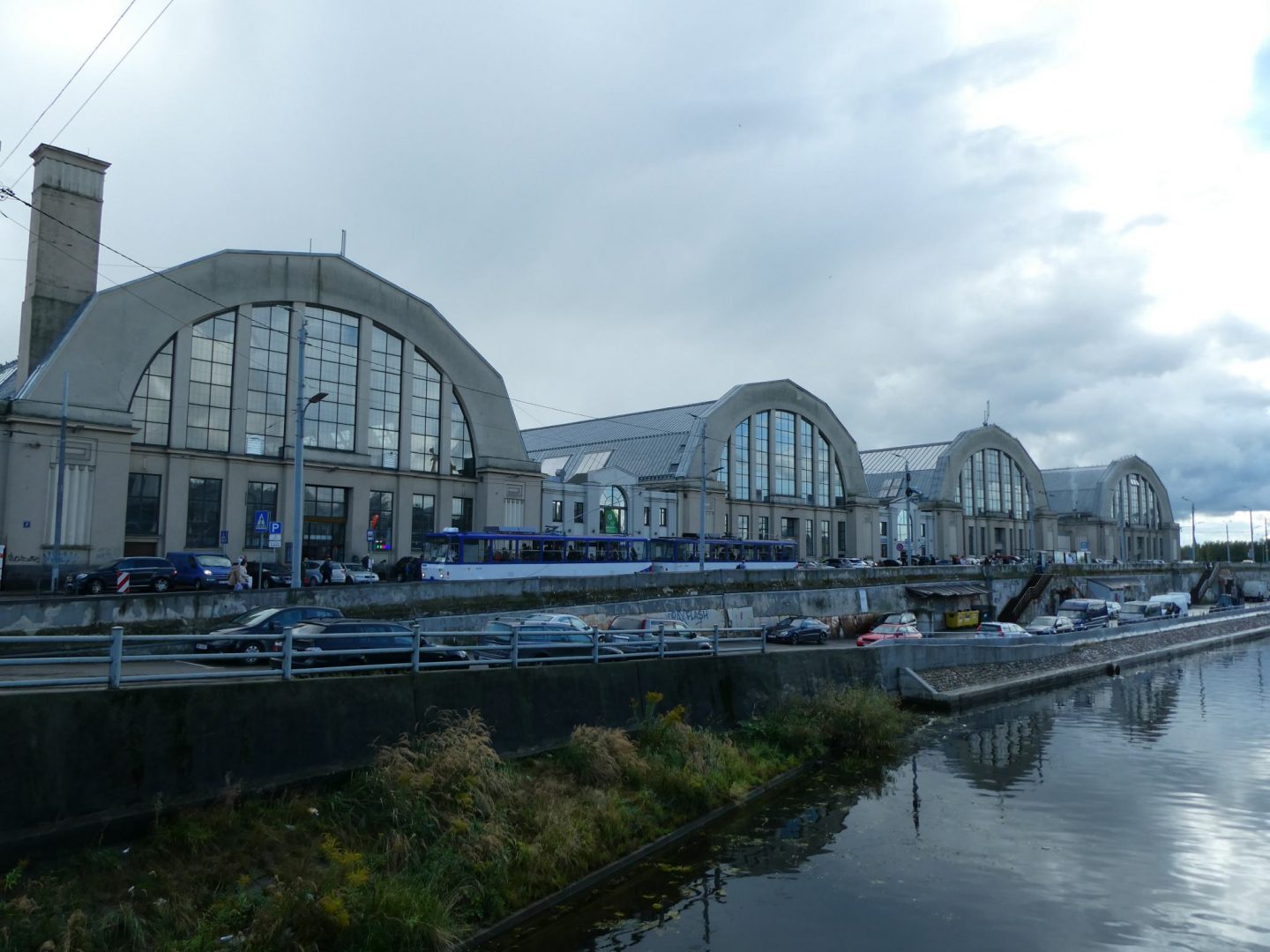 After Tsarist Russia defeated the Swedish Empire in the 1700s wars, Riga was subsumed into the Russian Empire.  By 1860 it was the world’s largest timber port and the third largest city in Russia, after Moscow and St Petersburg.

The city expanded beyond the medieval Old Town and around this time the first Latvians to be formally trained as architects began shaping the new city.  Art Nouveau was the style of choice, with a particularly local flavour.   Miraculously, many buildings of that era survived the wars to come.  Today, Art Nouveau accounts for one third of all buildings in central Riga.  It’s the city with the highest concentration of such buildings anywhere in the world.

A favourite in the Old Town is the Cat House built in 1909.  The cats on top of the turrets have their backs arched and tails up.  Some say the owner deliberately had the cats positioned so that their butts pointed at the Great Guild across the street, which had rejected his application for membership.  Sadly, the story isn’t true. 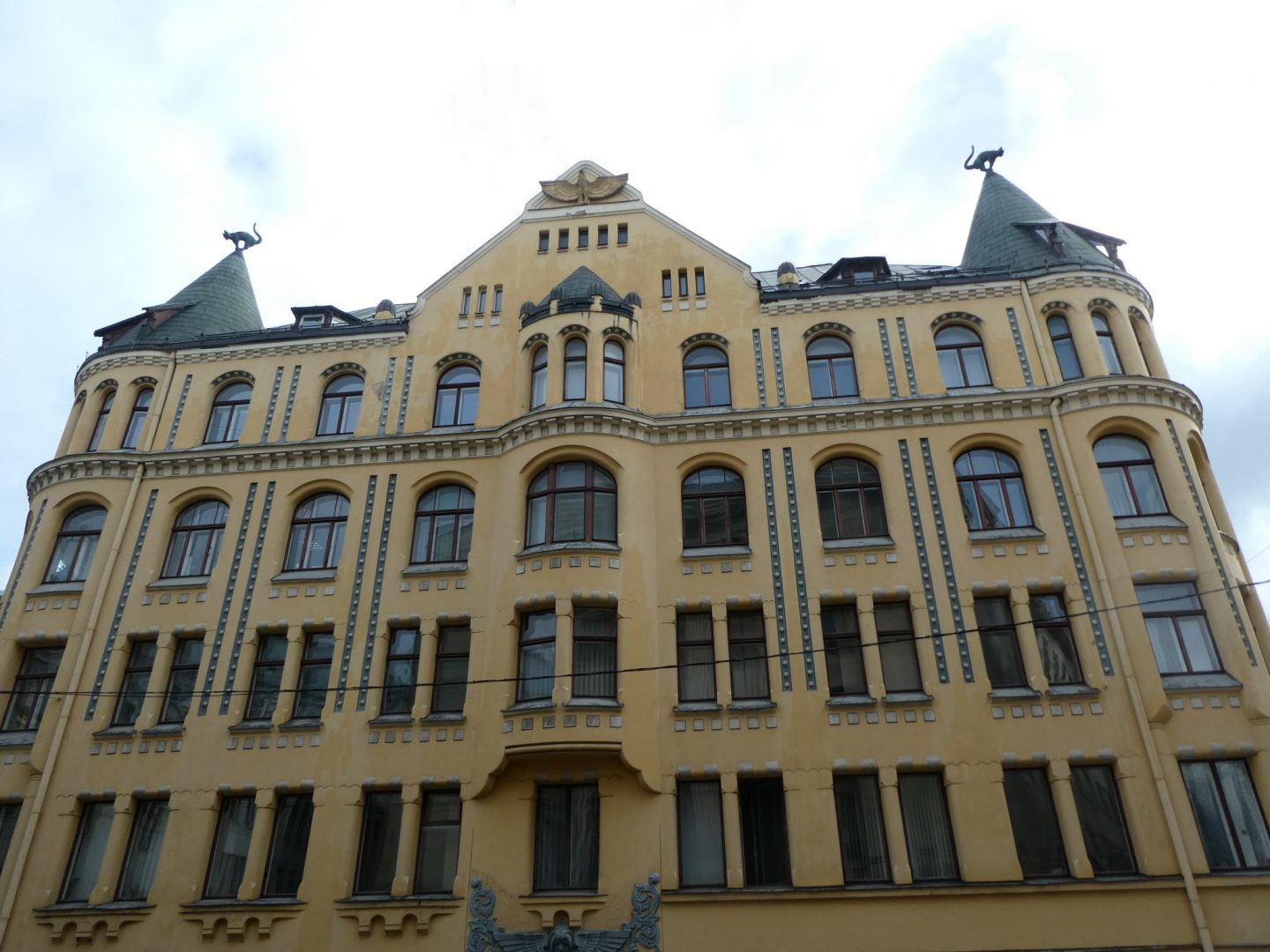 Outside the Old Town there’s a concentration of intact Art Nouveau buildings in an area now favoured by foreign embassies and the wealthy.  It’s a lovely precinct to wander around. 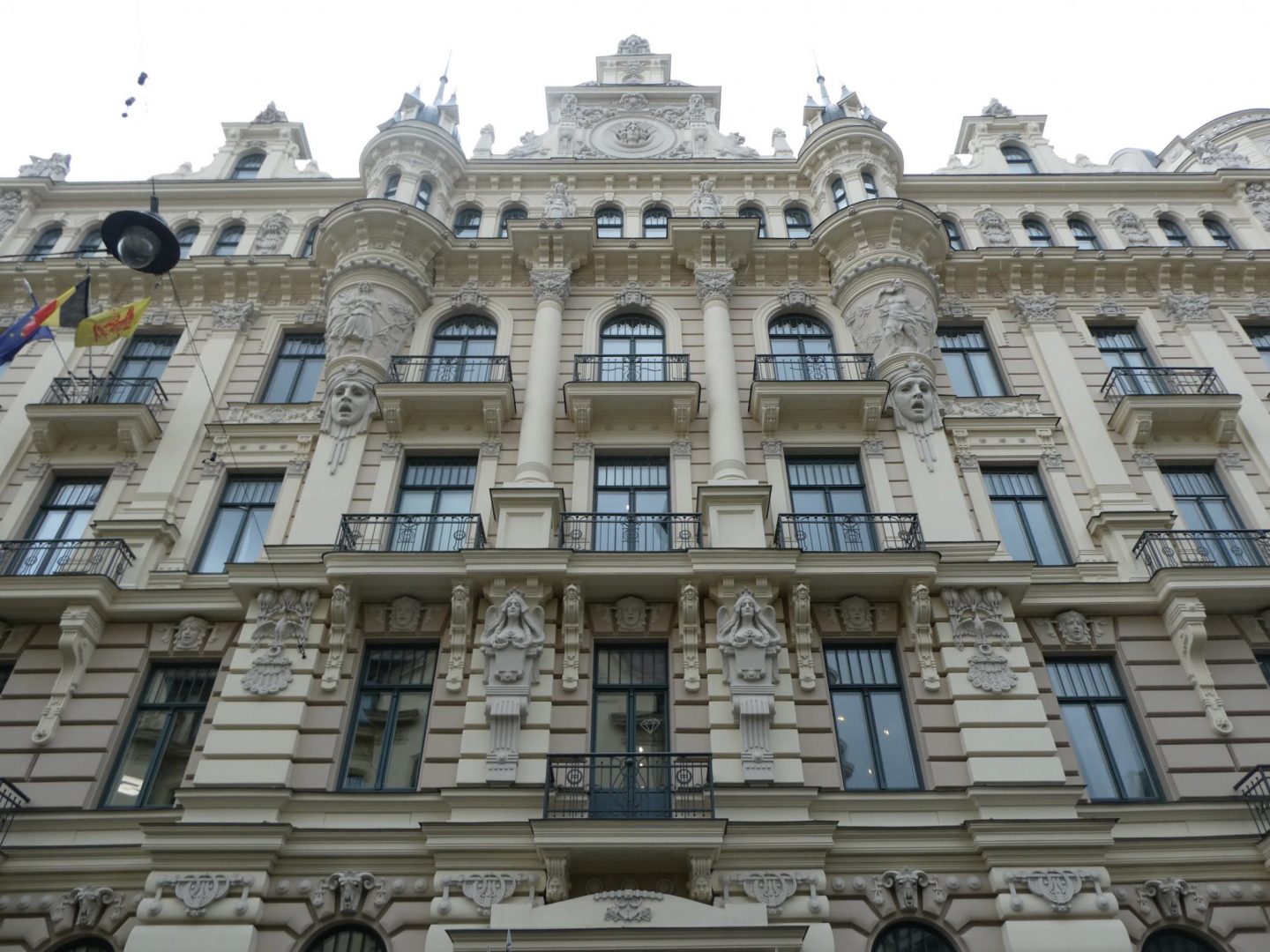 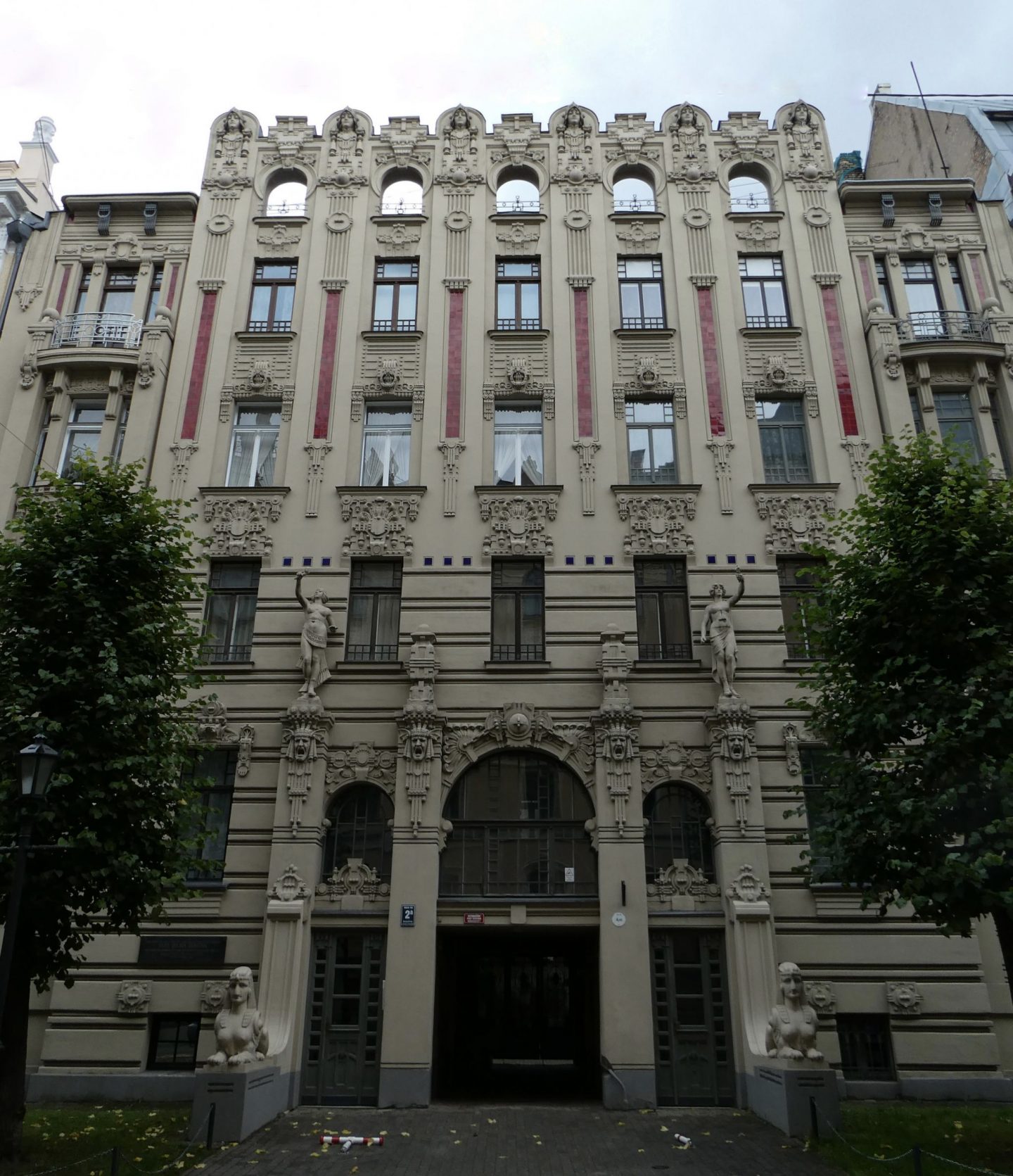 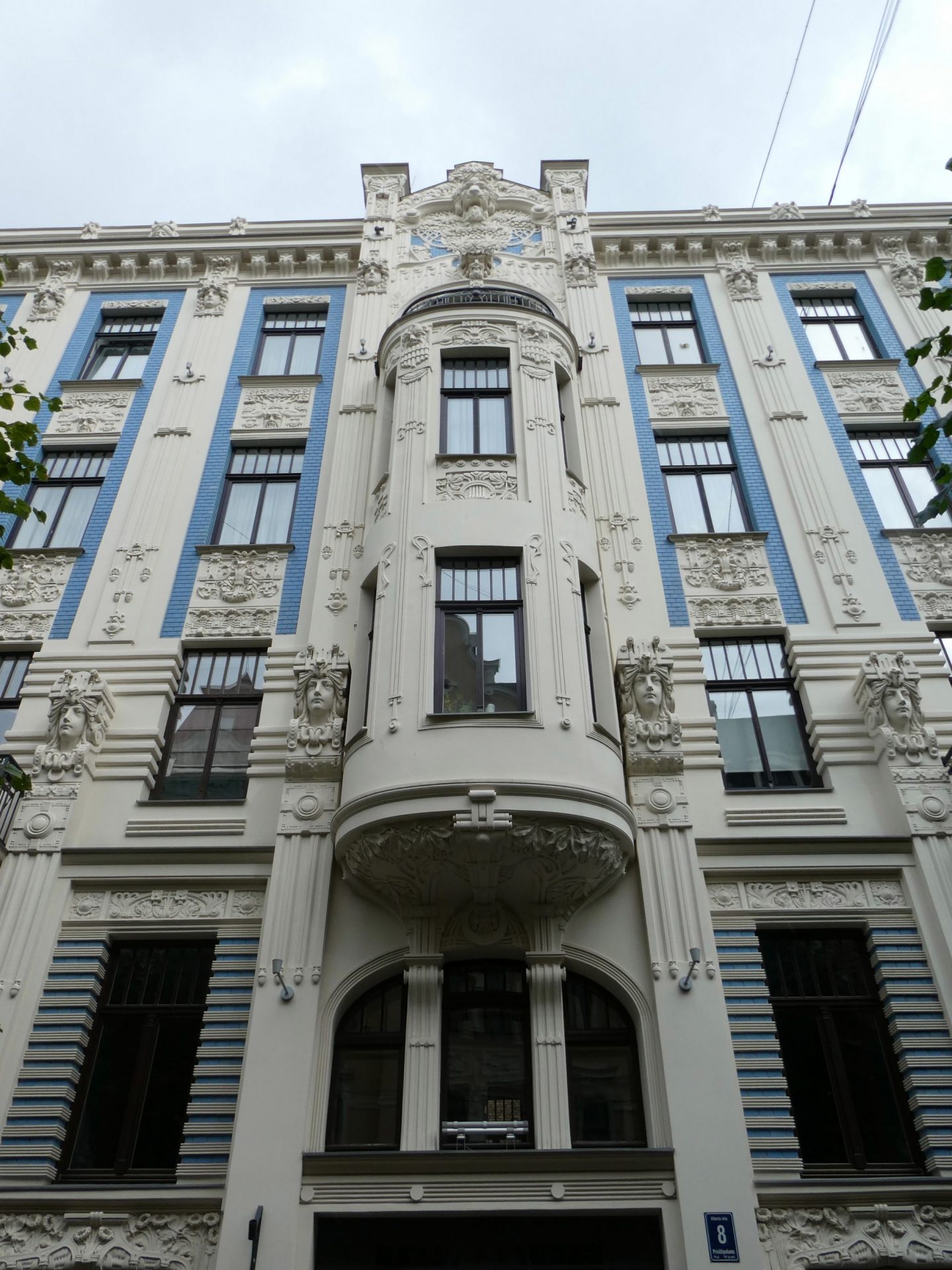 In the late 19th and early 20th centuries, culture, ethnicity and wealth gave rise to a nationalistic movement across Latvia, of which Riga would be the obvious and natural capital.

By the end of WWI, Latvians were fighting a war of independence against both the Germans and Russian Bolshevik forces, eventually evicting both armies and declaring independence in 1920.

In its brief initial period of independence, the city replaced a huge statue of Tsar Peter the Great with the Freedom Monument.  The inscription reads ‘For Fatherland and Freedom’.  Amazingly, it remained standing in the Soviet era, although locals were forbidden to place flowers there and could be arrested for approaching it.  These days, it’s guarded by a couple of soldiers and on the hour there’s a simple changing of the guard ceremony. 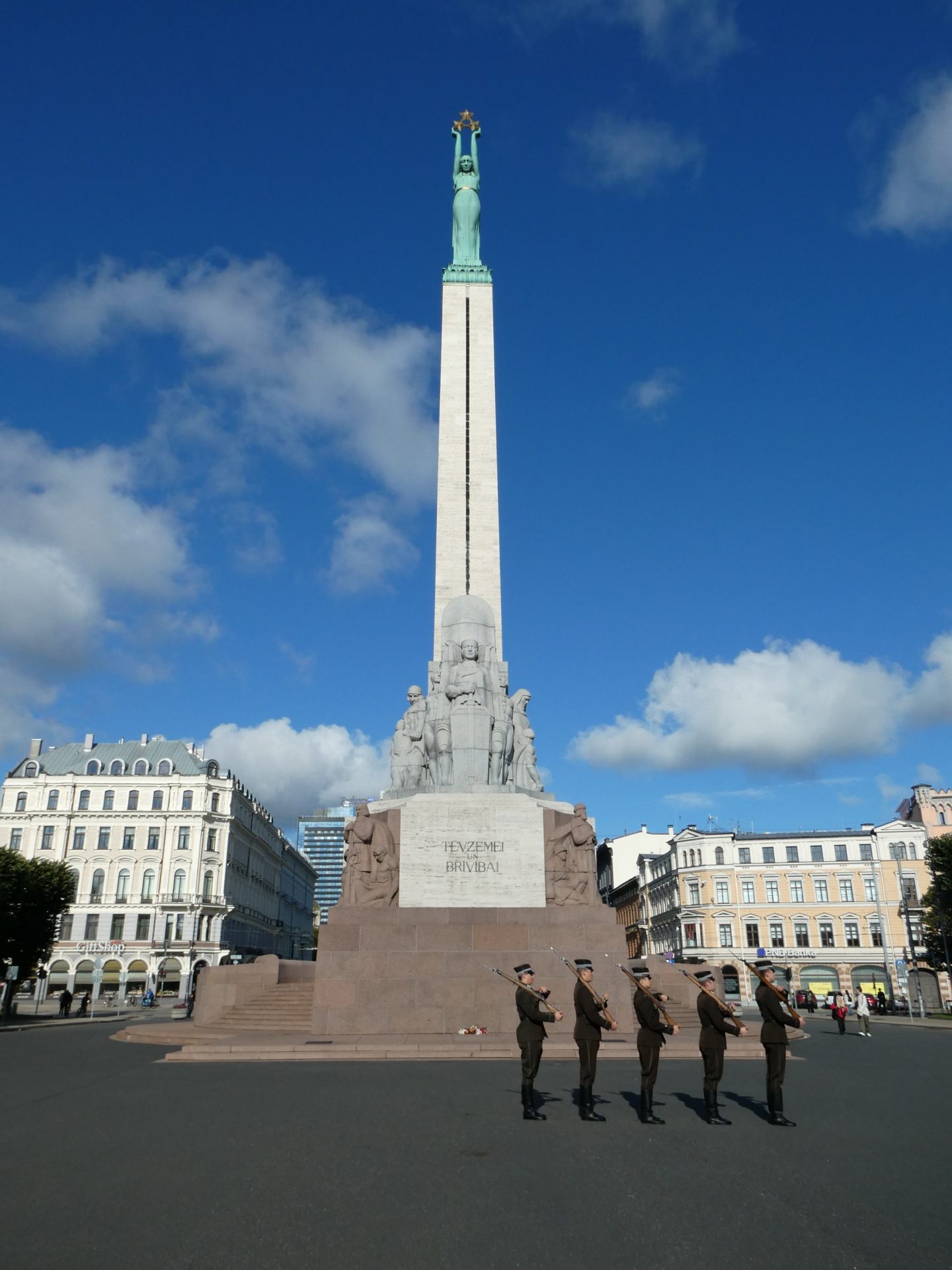 Immediately after invading, the Nazis and collaborators burned down all of Riga’s synagogues except one in the Old Town.  It only survived because torching it would have risked fire spreading to the close built neighbourhood around it.  The Nazis used it as a warehouse and it survived the Soviet era also, only to be bombed by neo-Nazis in the 1990s following independence.  It was fully restored in 2009 and again operates as a place of worship. 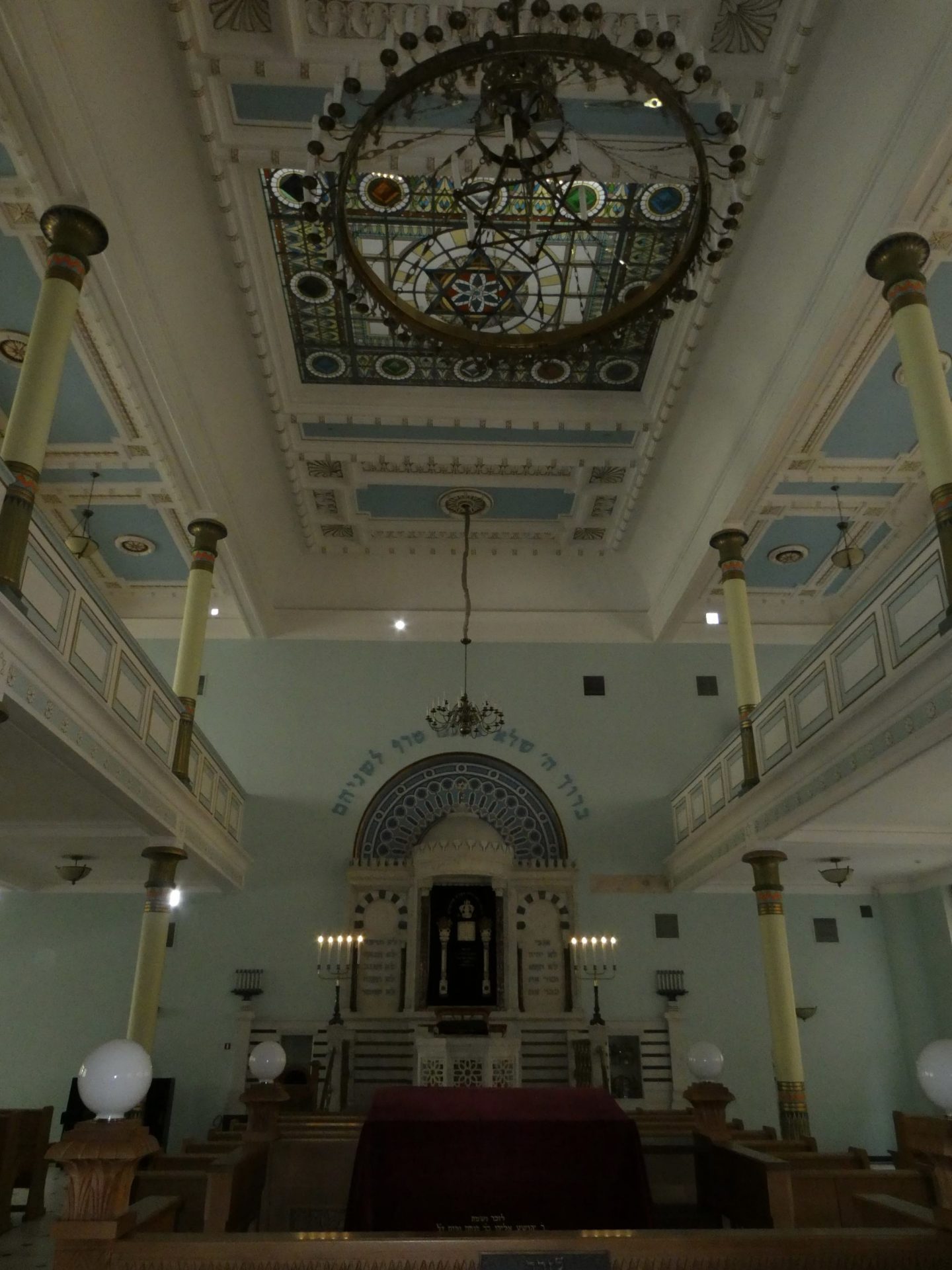 In addition to inciting pogroms, one of the Nazis’ first actions was to round up and murder several thousand Jewish men in a mass extermination outside the city.  Then they established the Riga ghetto and forced anyone known to be Jewish to live there.  In November and December 1941, of a total Jewish population of 30,000 living in the ghetto, 25,000 were exterminated in mass killings in Rumbala forest outside Riga.

By early 1942, across the whole country only around 6,000 Latvian Jews remained alive, from a pre-war total of more than 160,000.   With the Riga ghetto all but emptied, the Nazis then transported 25,000 Jews from Austria, Czechoslavia, Poland and other occupied areas to the Riga ghetto as a form of ‘holding camp’.  Those who were fit to work were transferred to work camps.  The rest were killed.

In 1943, the ghetto was liquidated and the remaining Jews were transferred to concentration camps.  By the time the war ended, only 1,000 Latvian Jews were still alive to be liberated.

The Riga Ghetto Museum on the border of the old ghetto is a sobering and informative place.  There’s a permanent exhibition charting the rise to power of the Nazi Party, the origins of its anti-Semitic policies and the relentless progress toward its genocidal goals.  There’s a reconstruction of a ghetto residence, a rail car similar to those used to transport Jews and a photographic exhibition telling some of the victims’ life stories. 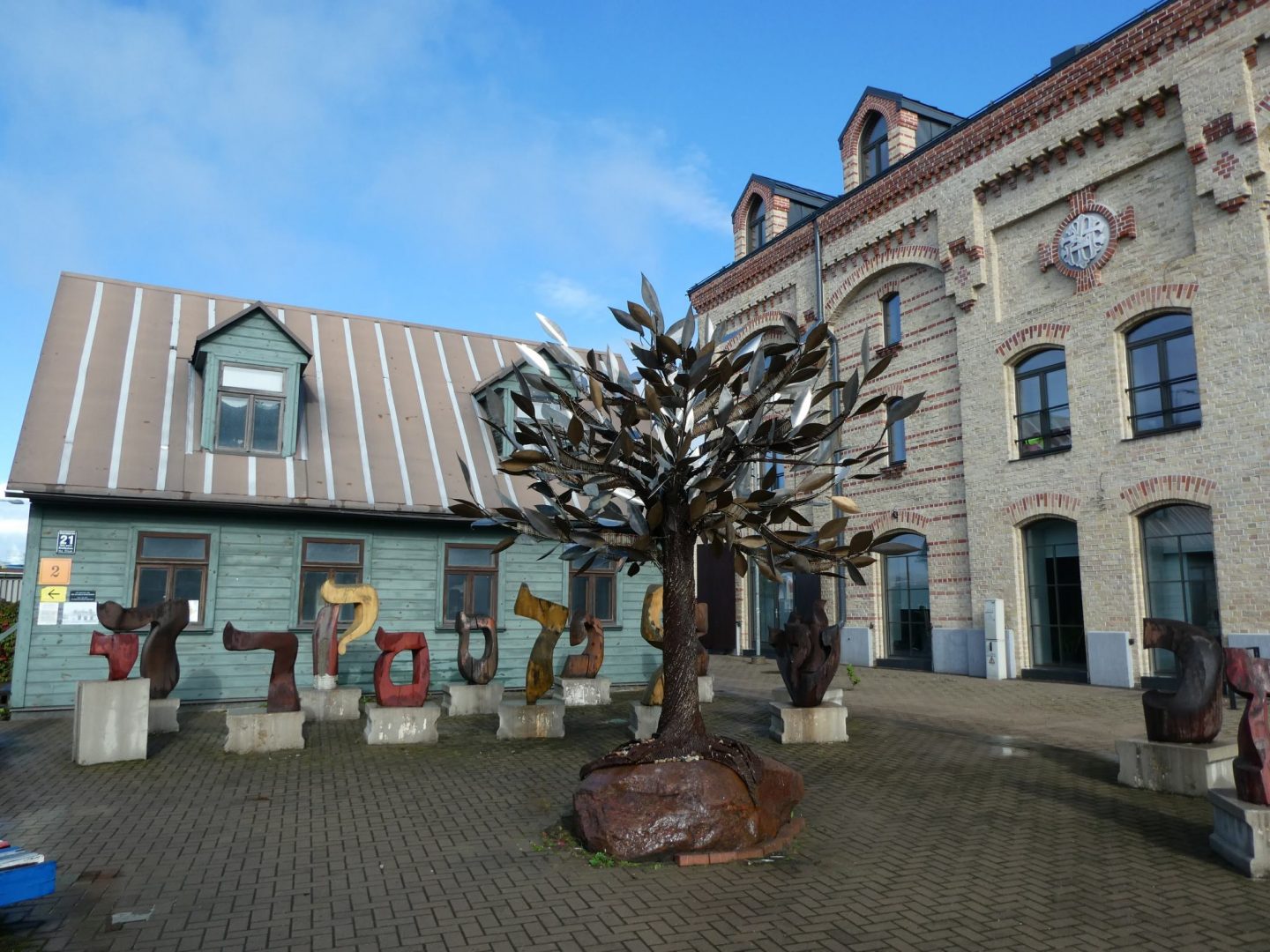 A board lists the names of the Latvian Jews lost in the holocaust.  The scale is difficult to comprehend. 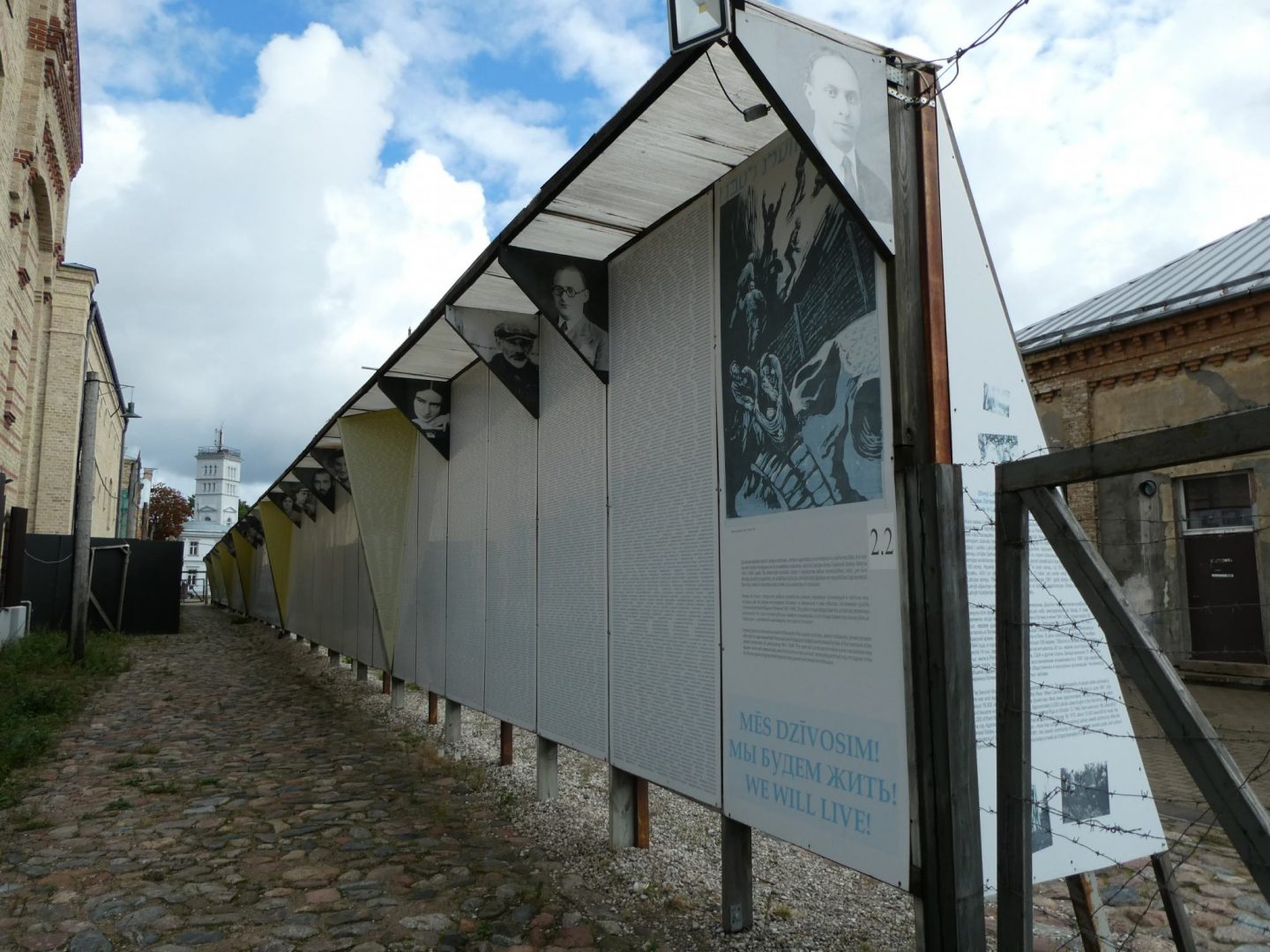 Nearby is the site of the Great Synagogue,  built in 1871 and burned to the ground in 1941 with an entire congregation of worshippers locked inside.  None survived.  In 1993, the foundations were cleared and a memorial erected. 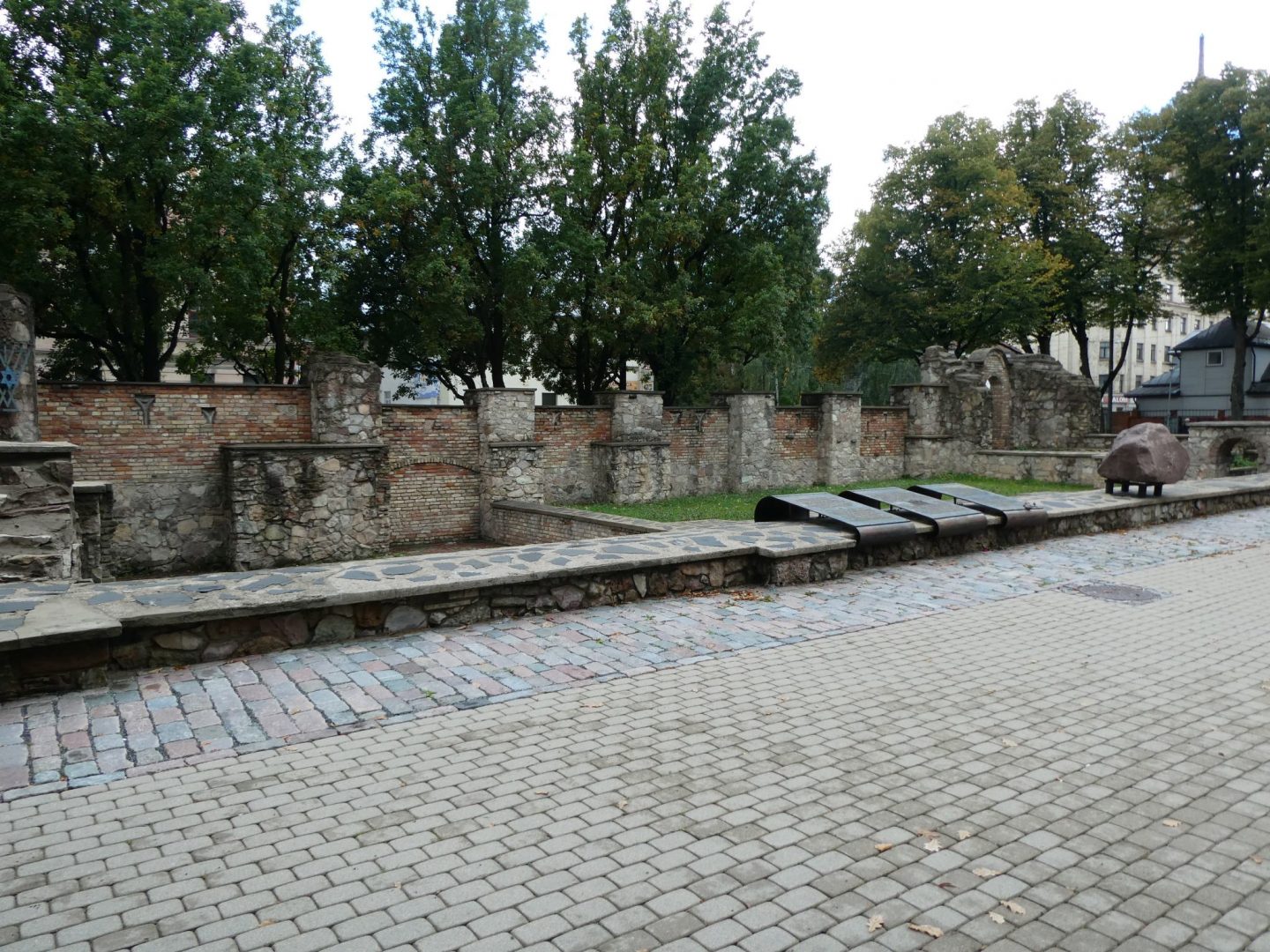 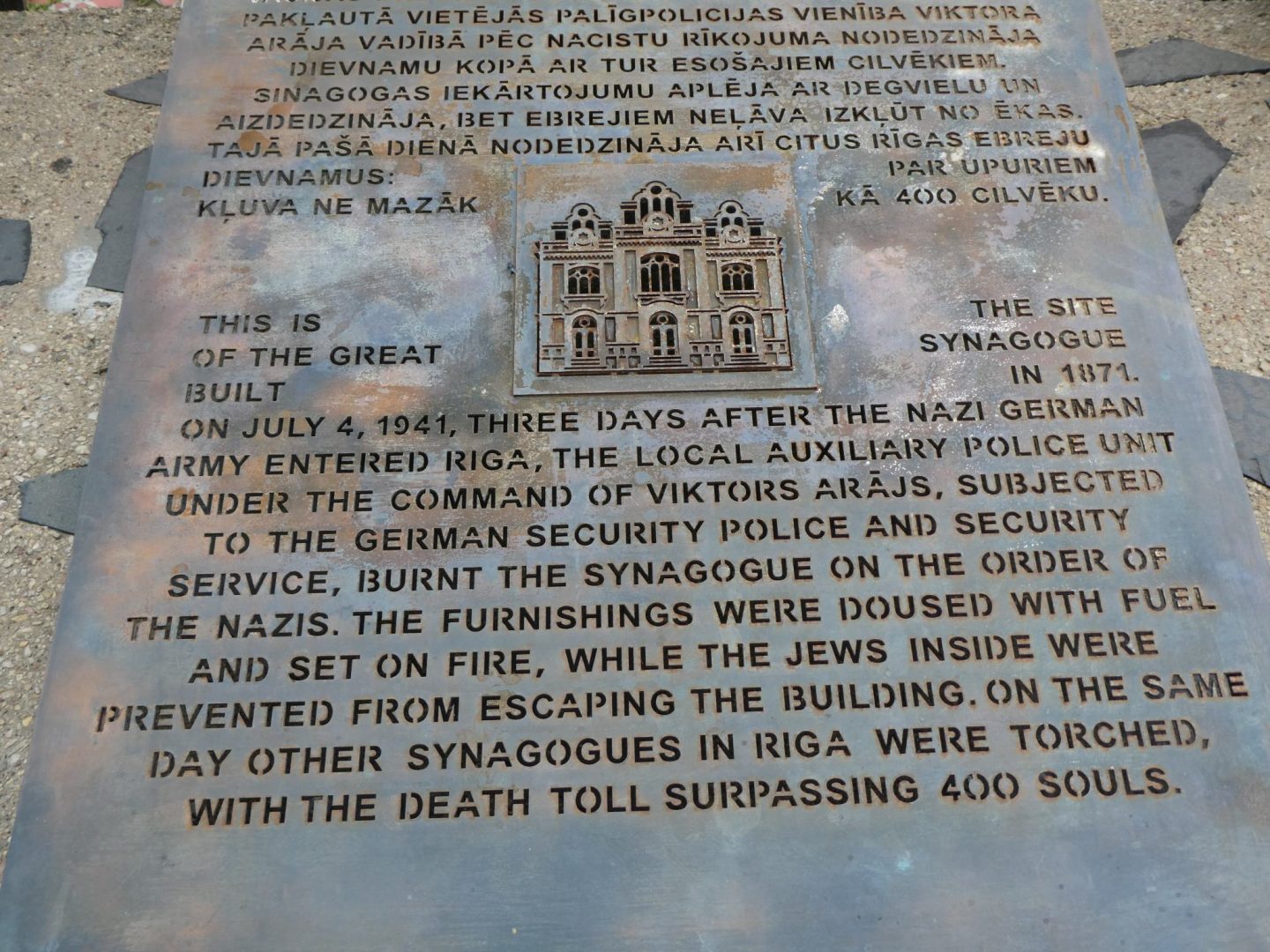 One light in the darkness of that era is the story of Zanis and Johanna Lipke.  Mr Lipke, a dock worker in his 40s, was so disturbed by the treatment he saw meted out to the Jews that he sought out a job in the Luftwaffe warehouses situated near the Riga ghetto.  Initially he smuggled Jews from the ghetto to the warehouse and on to safe hiding places around the city, assisted by a network of similarly sympathetic friends.  In 1942, when tightening restrictions on movement made it impossible to continue doing this, he and his wife constructed a bunker under their woodshed.  Between 1942 and 1944 they sheltered and fed between eight and twelve Jews at any given time until safe haven could be found for them.

They risked death or detention for their actions but saved around 50 people.  In 1966, both were awarded the title ‘Righteous Among the Nations’, Israel’s highest honour for non-Jews who assisted Jews escape the Nazi tyranny.

The Zanis Lipke Memorial Museum is a recreation of the bunker-barn constructed in the courtyard of the Lipke’s former home, next to where the original was located. 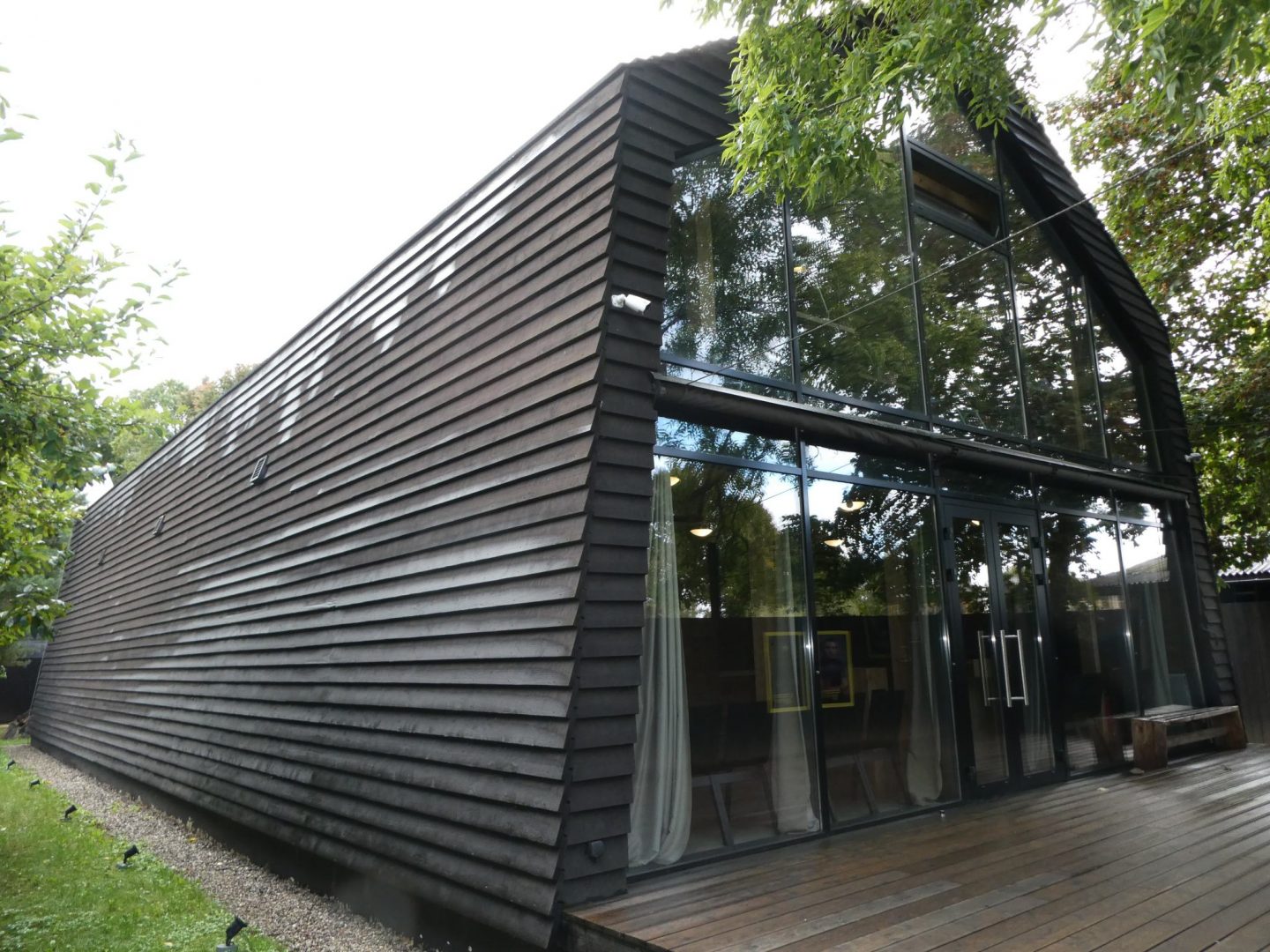 And then, of course, Latvia suffered under repressive Soviet rule until finally re-gaining independence in 1991 following the collapse of the USSR.  There’s almost no evidence of the Soviet era remaining.  The big, brutalist statues and the memorials to the ‘glorious motherland’ are gone.   But there is the Latvian Academy of Science building.

It was built as a ‘present’ from Moscow, which has seven identical but bigger versions. Construction began in 1951 and it was derisively called ‘Stalin’s birthday cake’.  Stalin never saw it completed as he died in 1953 and the building wasn’t completed until 1961.  Perhaps it should be called ‘Requiem to Stalin’, although it’s doubtful anyone in Latvia mourned his passing. 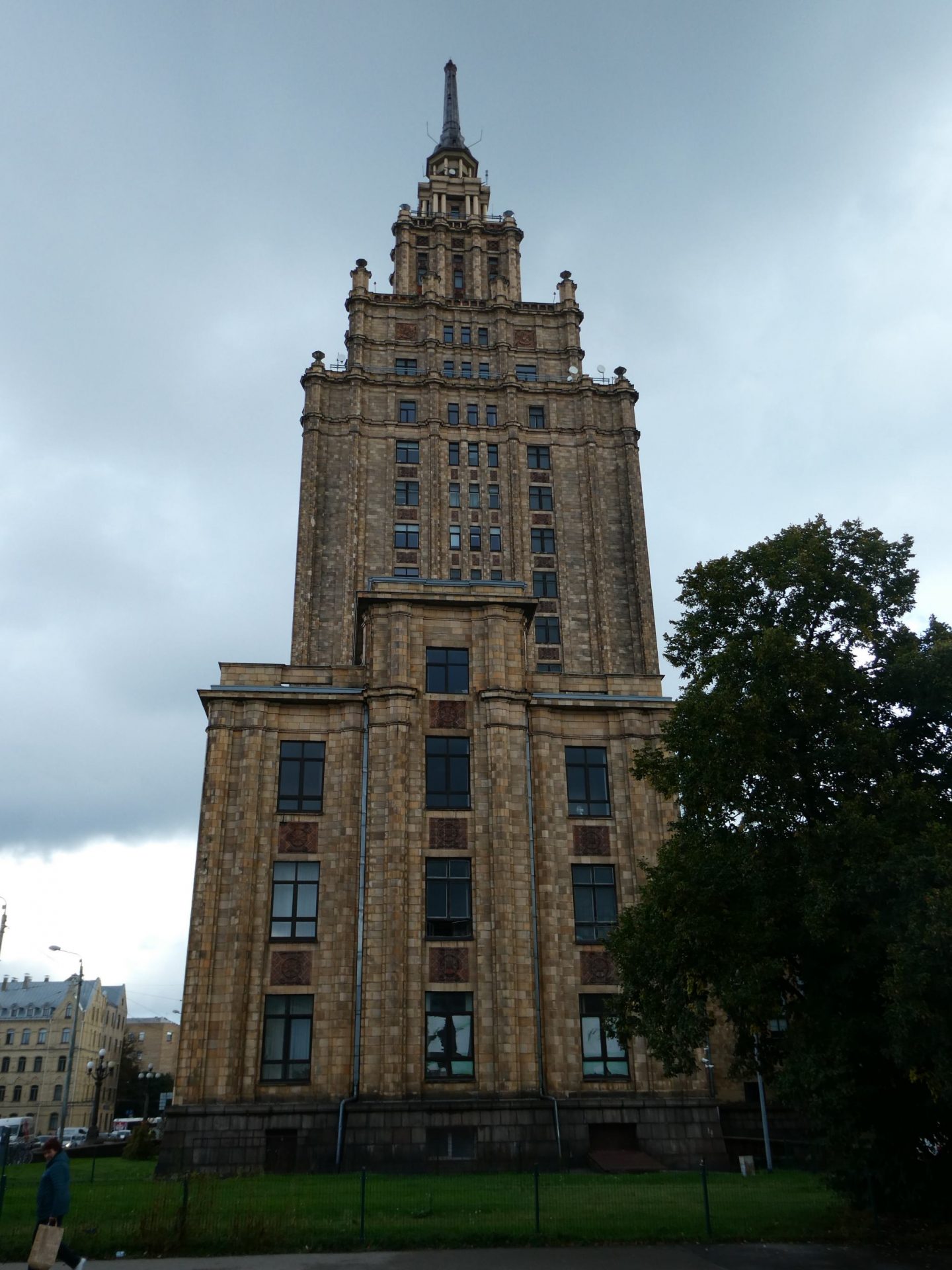 Like Estonia and Lithuania, Latvia threw off the shackles of communism and embraced functional democracy with alacrity when the USSR fell apart.  It’s economy hit some bumps in the GFC but is rebounding.  The country scores high on indices for press freedom, internet freedom and democratic governance.   It’s the first former Soviet country to democratically elect a female head of state.  Things are looking good.

And so to finish on a lighter note, a photo of a random piece of street art.  No idea why or how it came to be, but we loved this giant fox slinking stealthily around the side of a building in the suburbs. 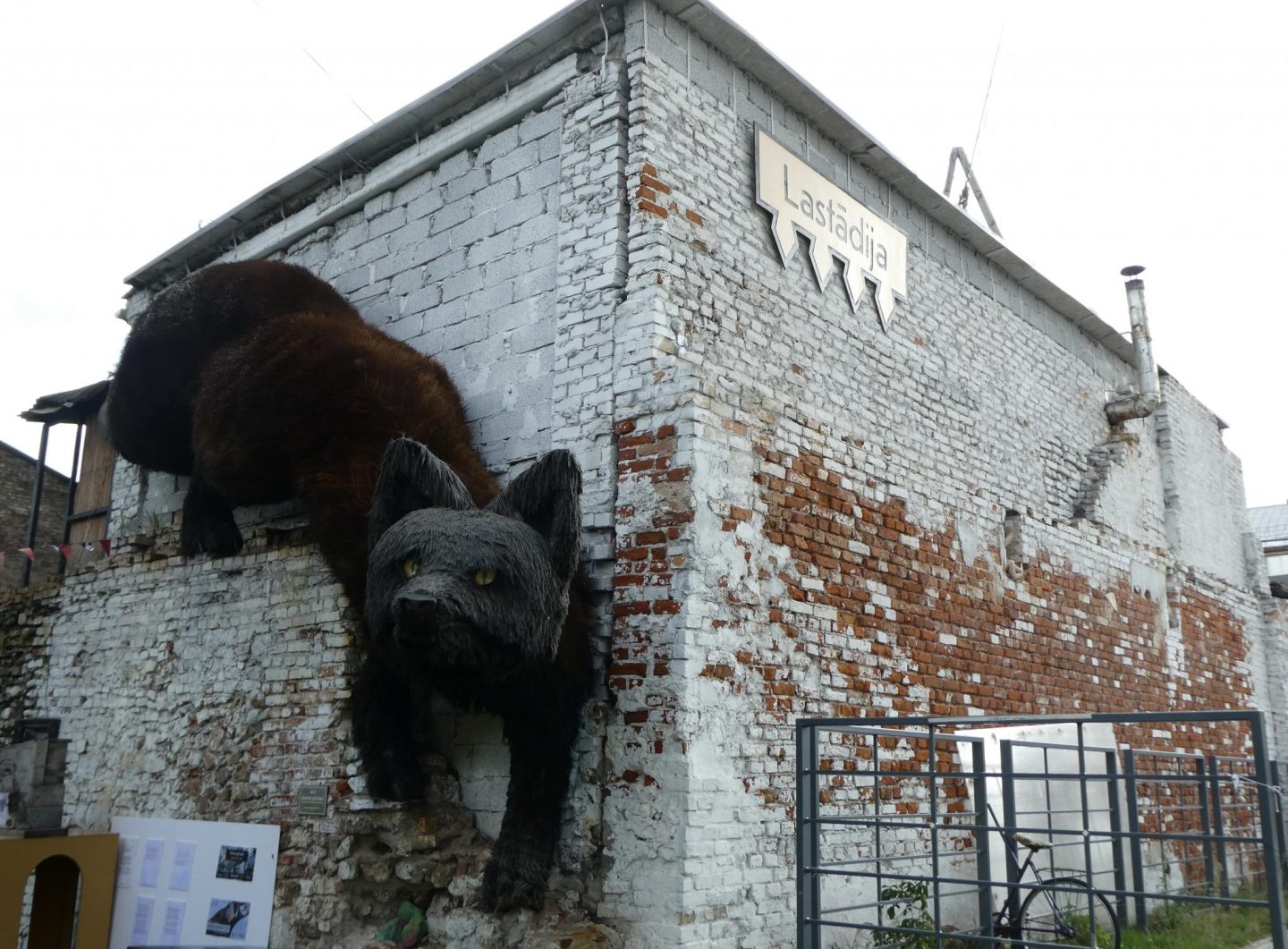