Kuldiga is a charming town in north eastern Latvia with a population of just 13,000.  Not many foreign tourists come here, but it’s popular with domestic tourists for a couple of curious, almost comedic, waterfall statistics.

Kuldiga is the site of the widest natural waterfall in Europe.  Why is that funny?  Well, let’s just say it may be Europe’s widest, but it certainly isn’t the tallest. Ventas Rumbas Waterfall is  249 metres wide but just 1.6 to 2.2 metres high.  It isn’t a waterfall so much as a rocky ledge with water running over it.  We couldn’t find a formal geographical definition specifying a minimum height to qualify as a ‘waterfall’.  The website of Americanrivers.org states it must at least five feet (1.524 metres), in which case Ventas Rumbas just qualifies. 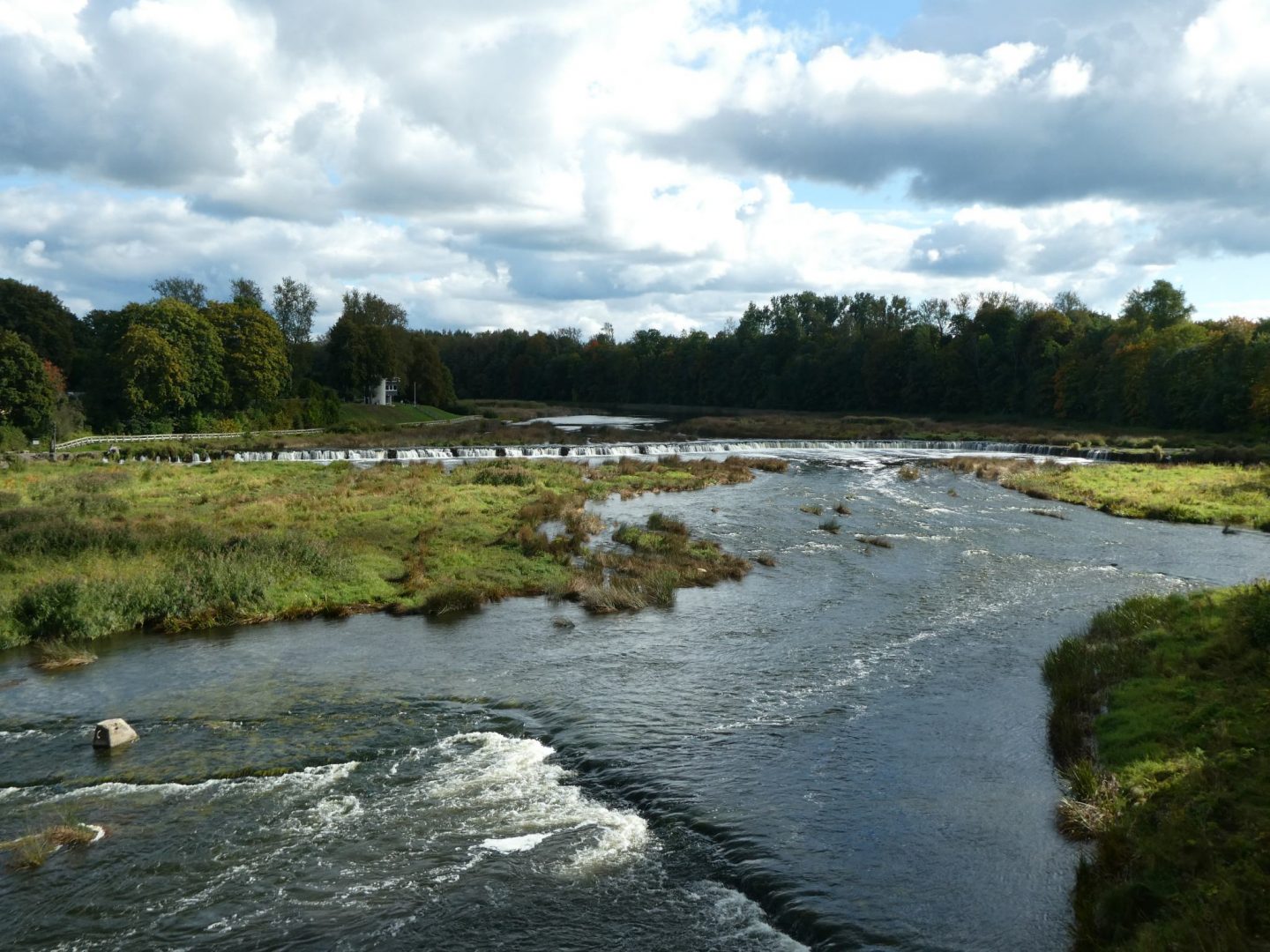 Kuldiga also has Latvia’s highest waterfall.  With tongue firmly planted in cheek, the Lonely Planet refers to it as Latvia’s ‘Niagara of sorts’.

It’s a mere 4.15 metres in height.  We really wonder whether it qualifies as a waterfall at all, given that its drop is the result of man made alterations to the stream in the 17th century to enable it to be used for a paper mill. 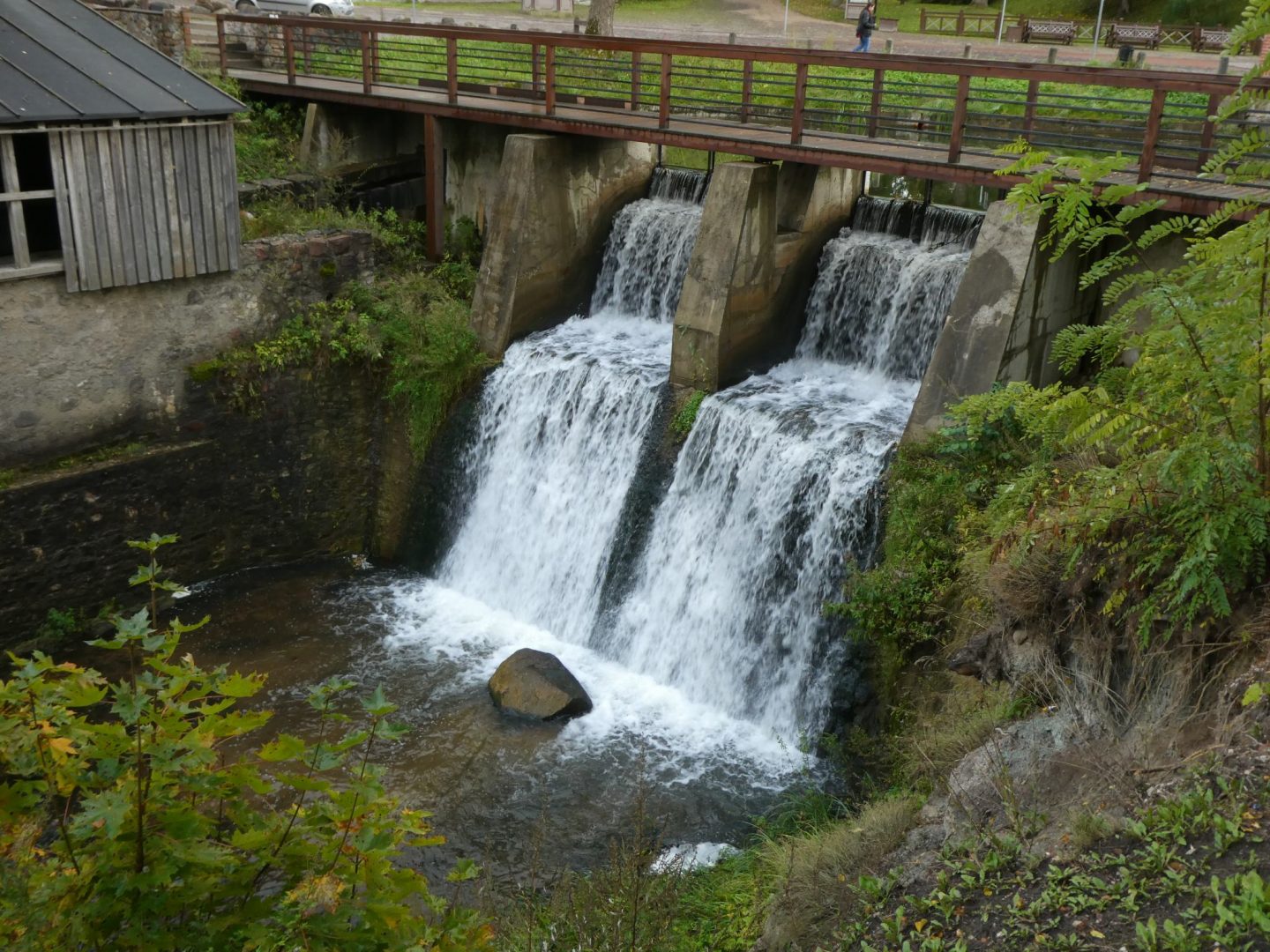 Kuldigans are also quite proud of their Old Brick Bridge – the third longest arched brick bridge in Europe. 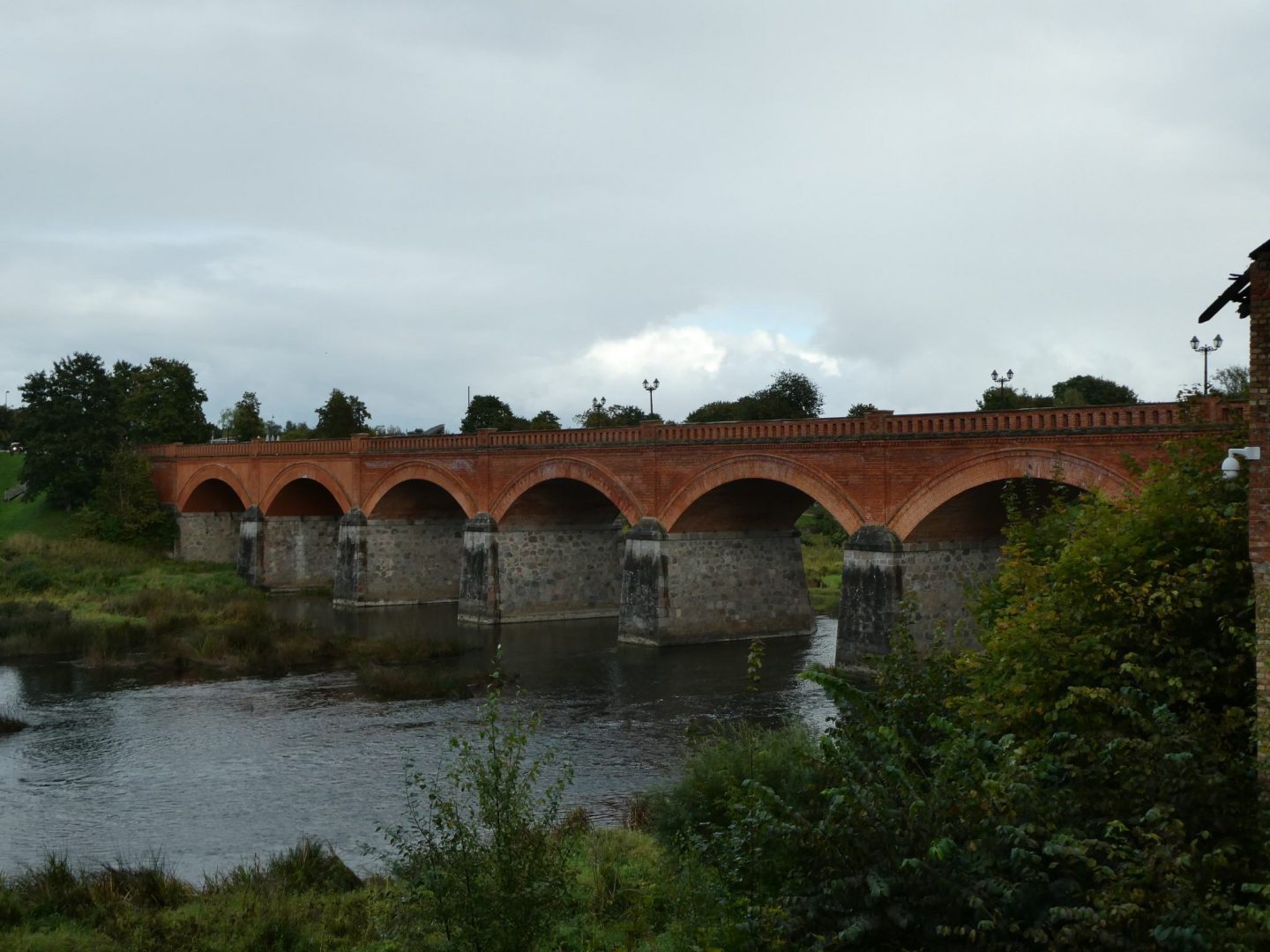 We can forgive Kuldiga for these rather dubious claims to fame for two reasons.  Firstly, the town itself is as pretty as a picture, quiet and sedate, a nice place to get an insight into Latvian village life.  The architecture is a mix from the 17th century to the 20th. 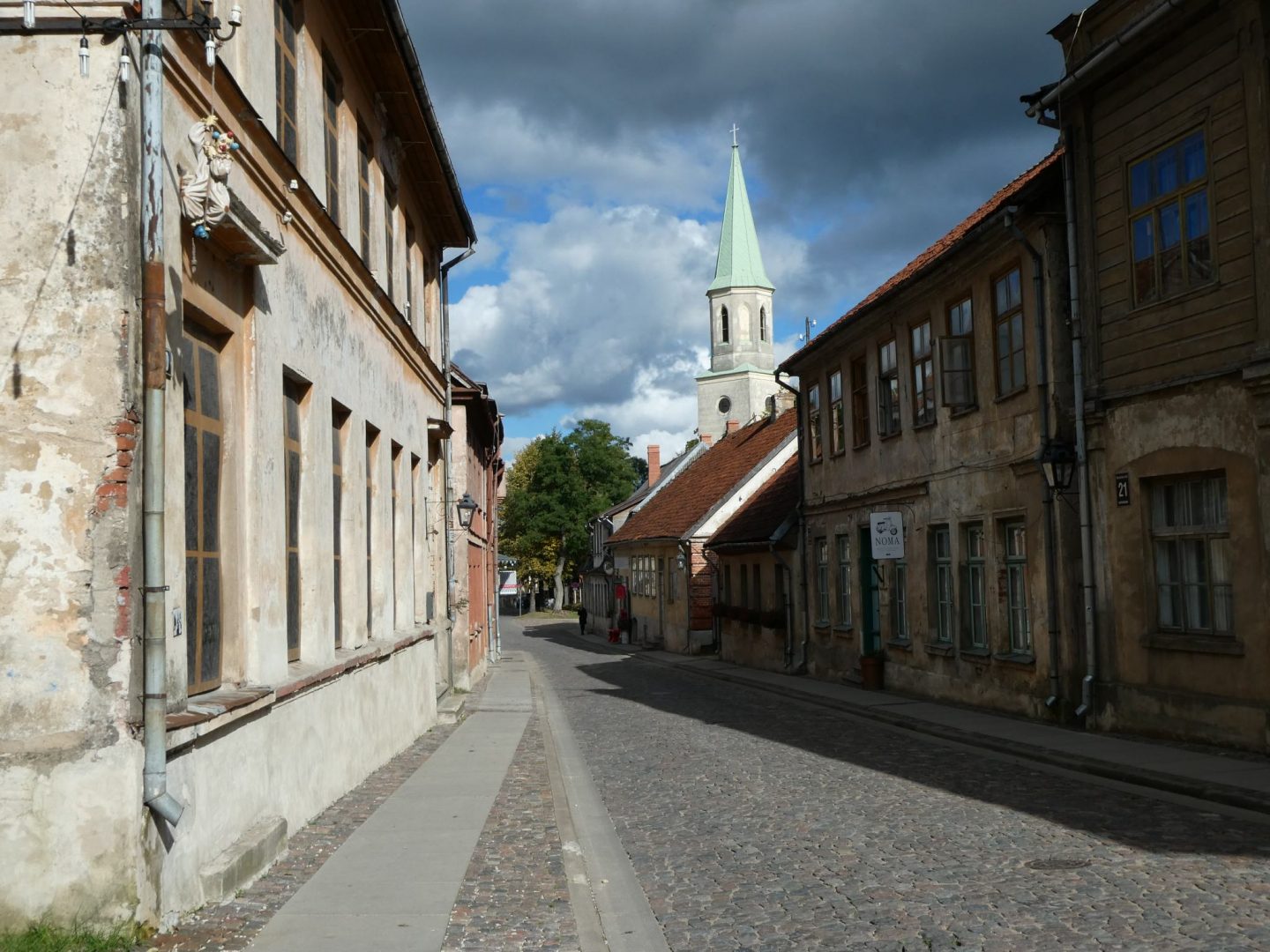 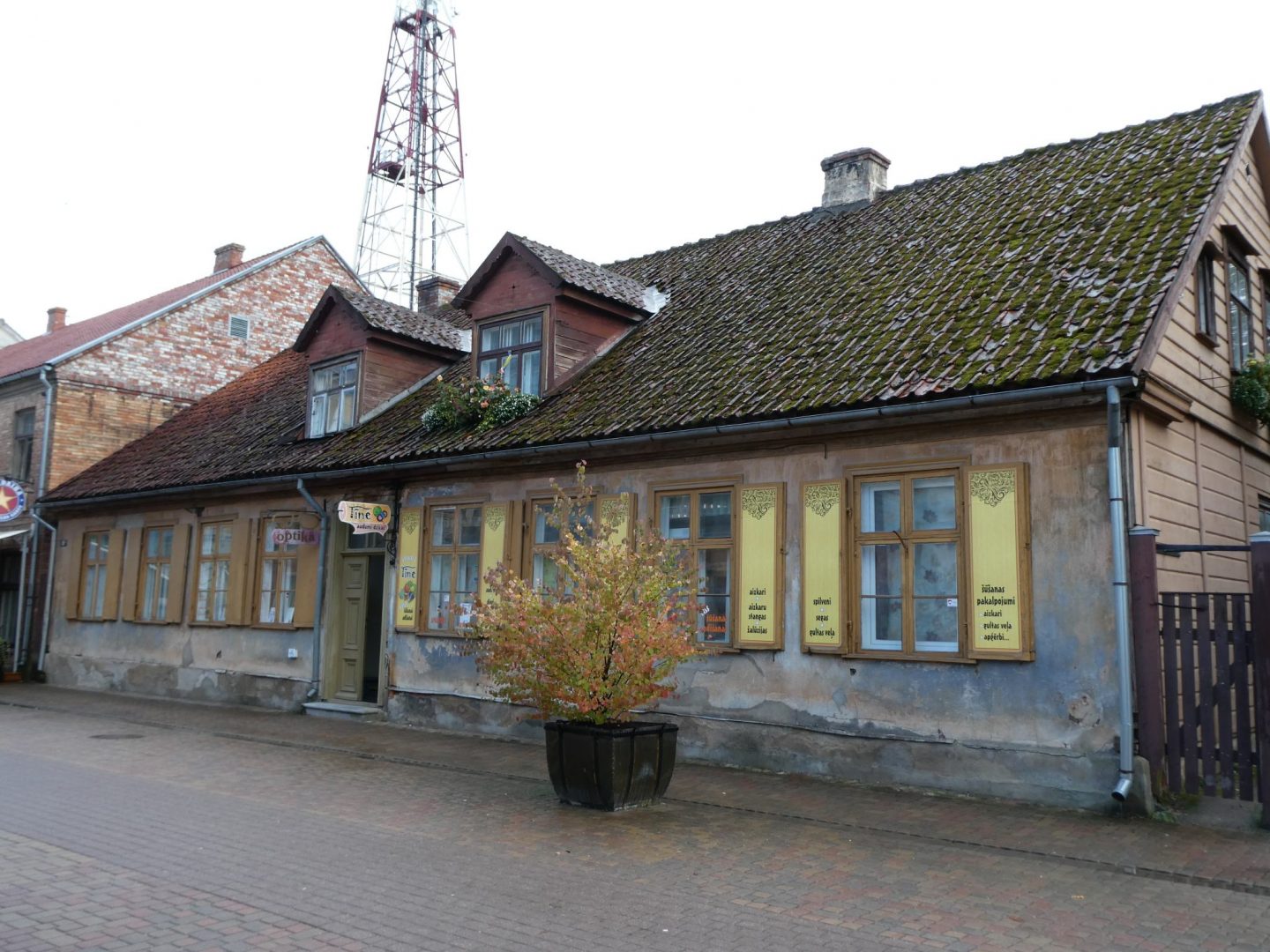 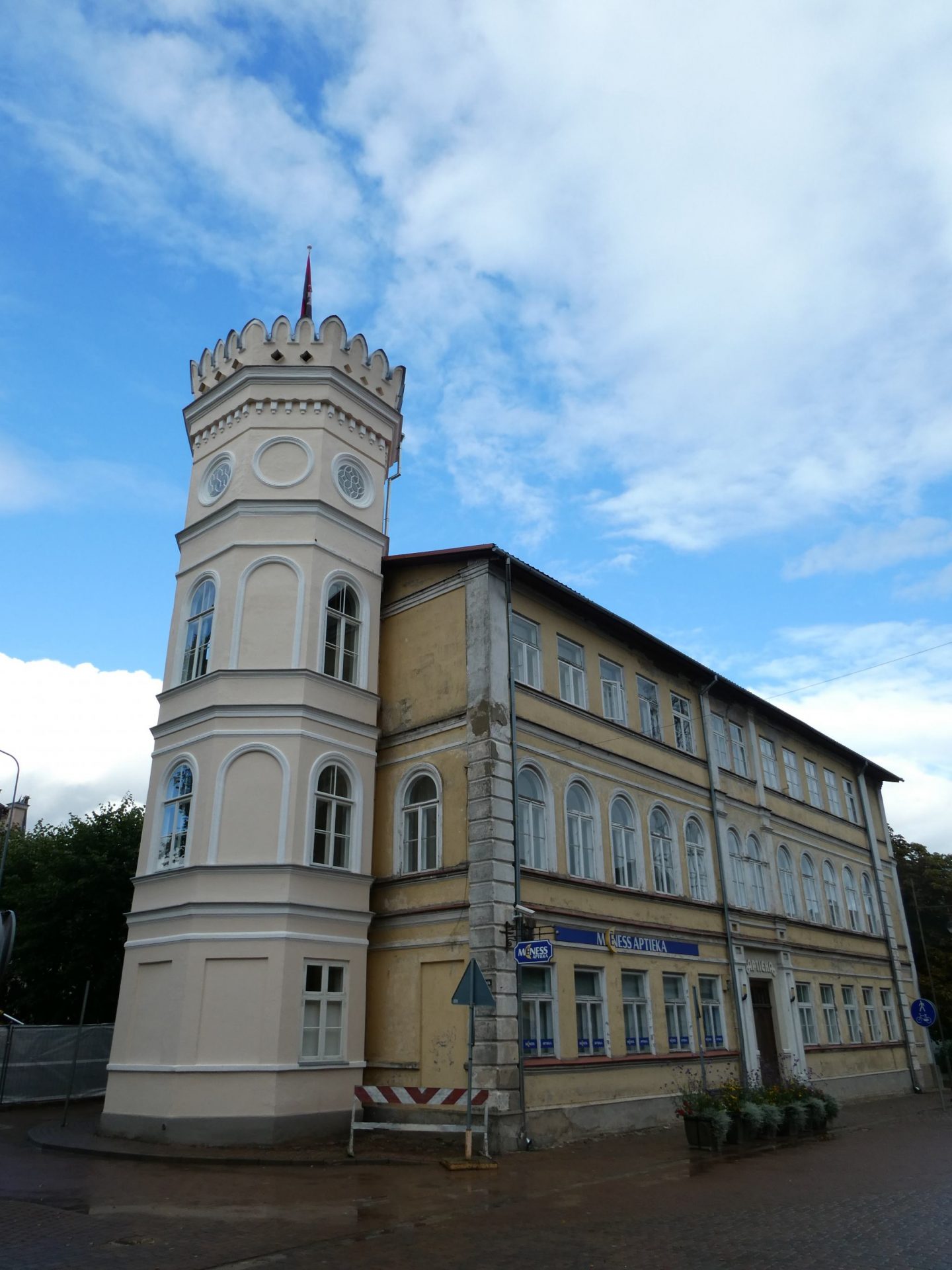 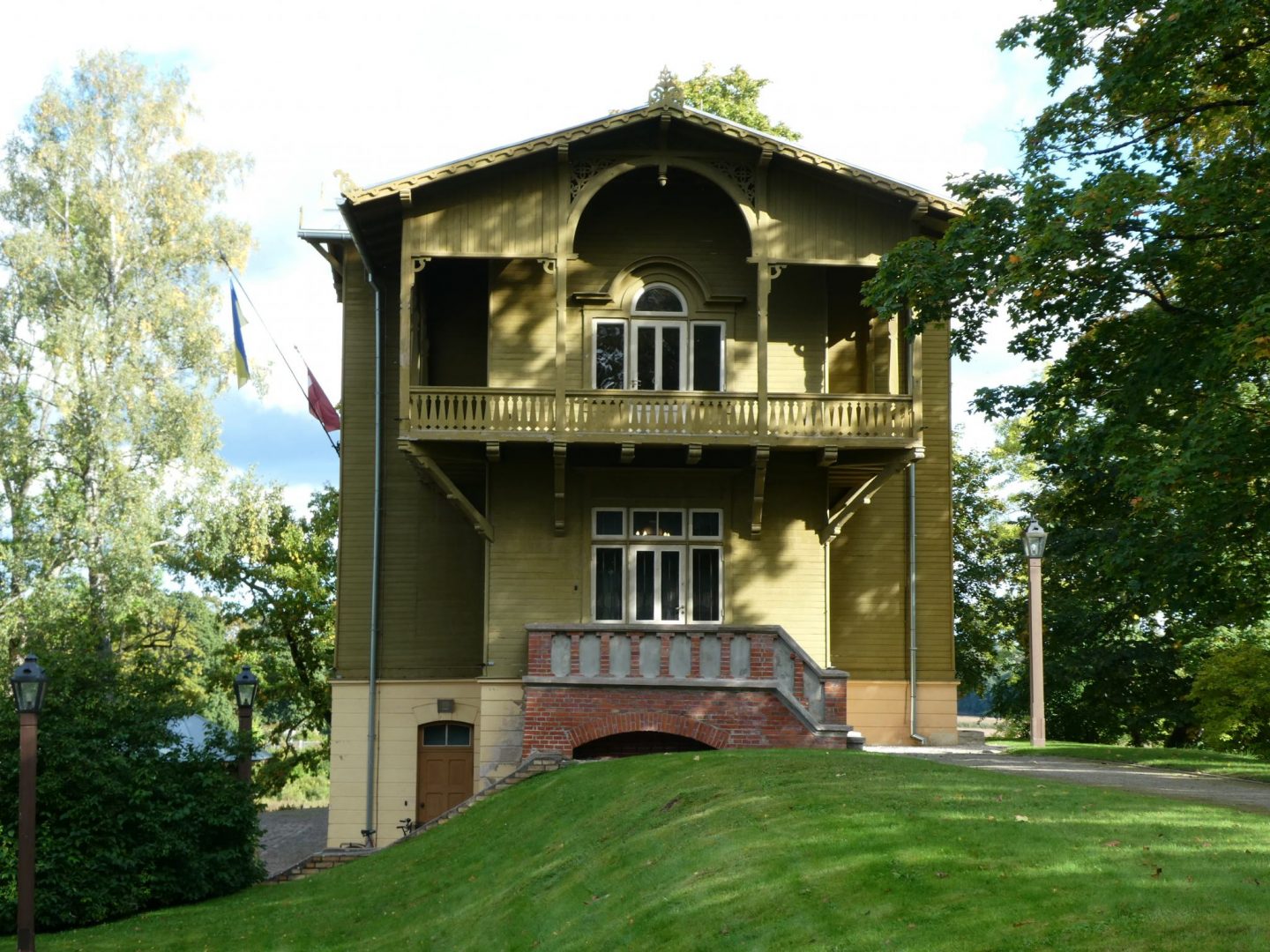 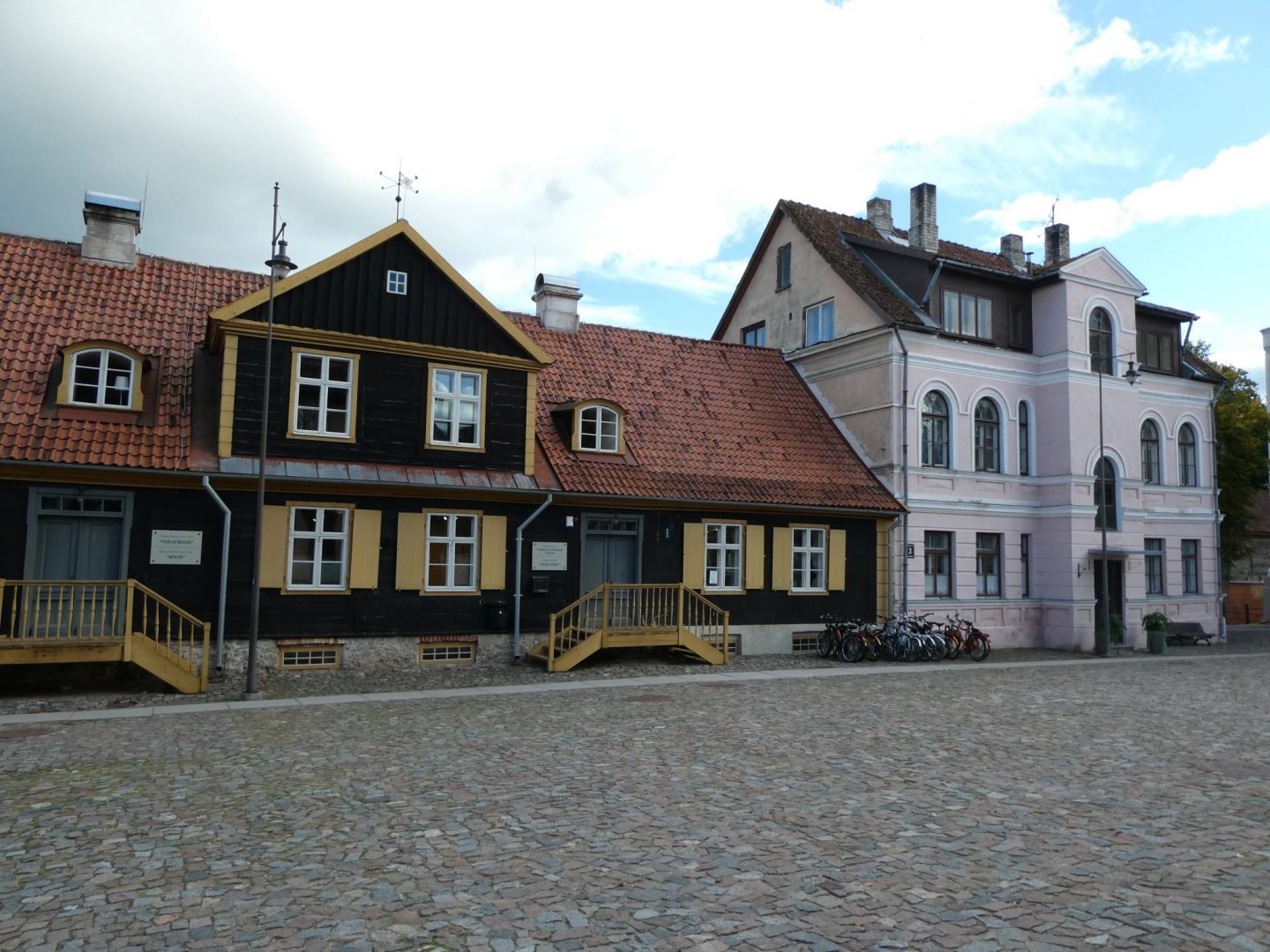 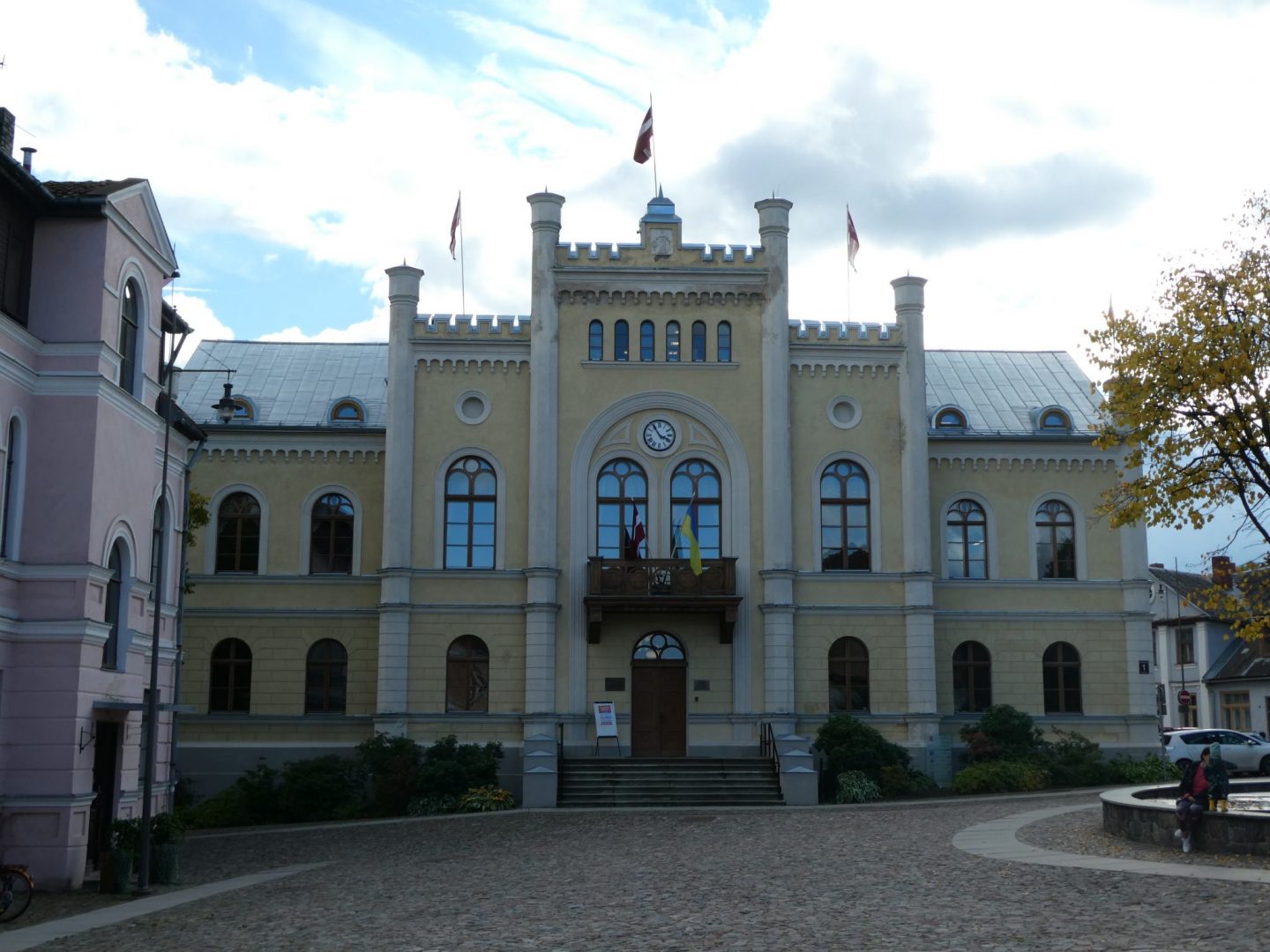 And for a town of its size, it has a lot of greenery and parks. 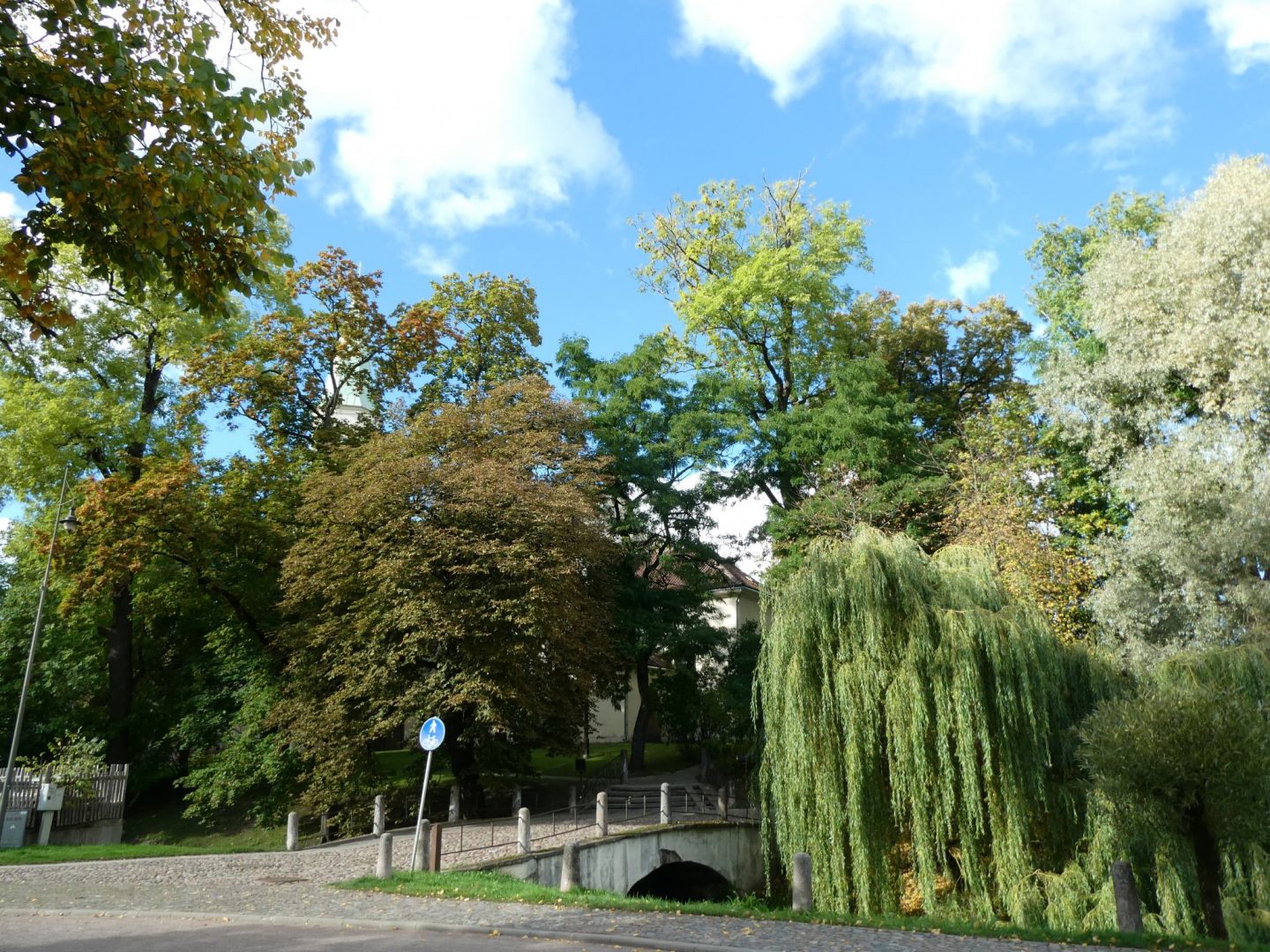 And the second reason we forgive any idle boasting by Kuldiga is the Cultural Potato Field.

In the 1600s, Kuldiga was the capital of the Duchy of Courland.  Duke Jacob Kettler had a trading empire which stretched to North Africa.  In 1673, he brought potatoes from Hamburg and had them planted in the castle garden.  They didn’t really take off with the locals until food shortages during the 1700s wars made them a necessity, but they are now a staple in the Latvian diet and the Duke is credited as the man who introduced potatoes to Latvia.  He’s honoured with a statue in town. 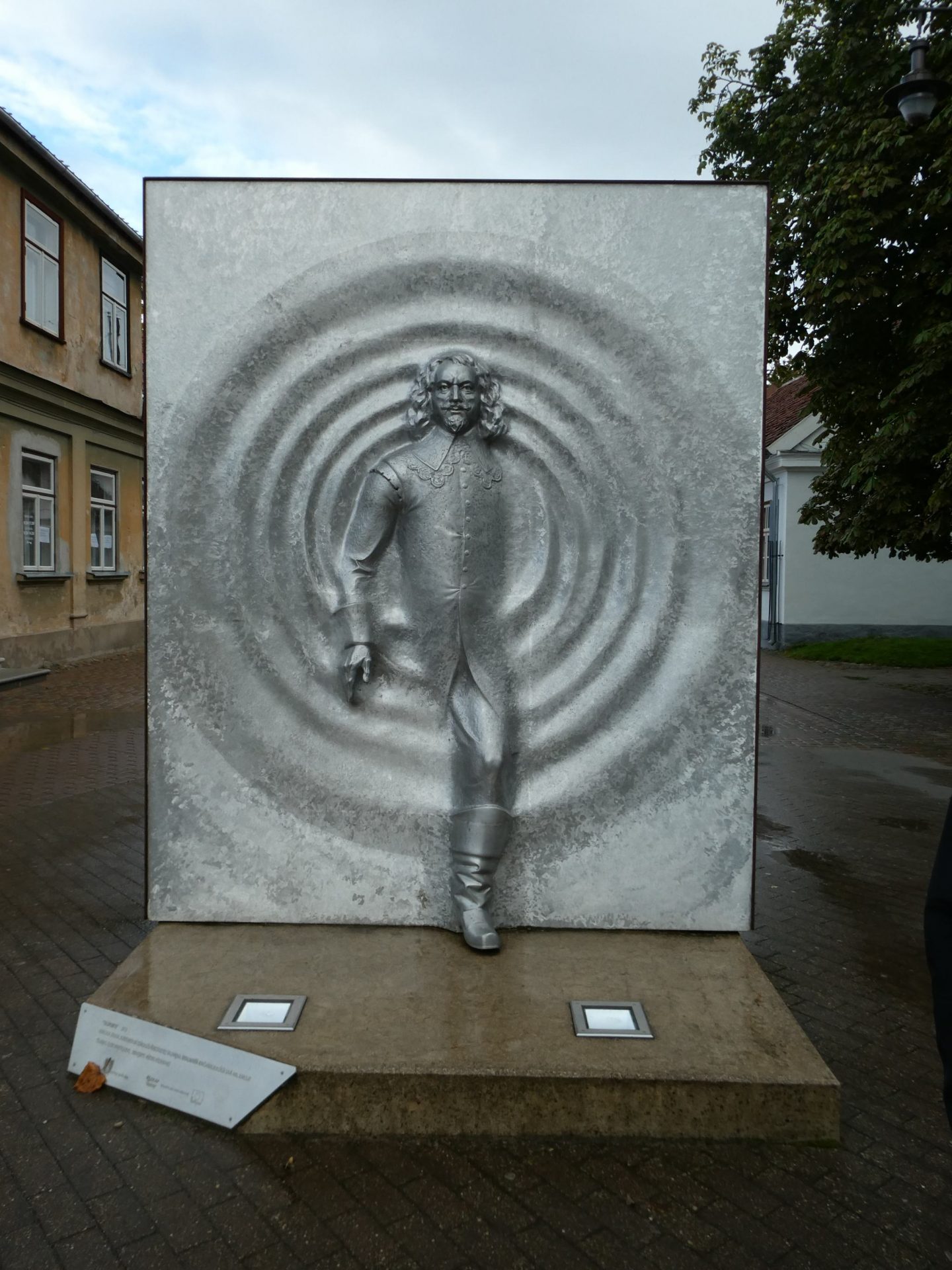 And the Cultural Potato Field?  Each summer since 2019, a plot in one of the city parks is planted with potatoes.  Lovingly tended by volunteers, the growing potatoes listen to Potato Field Radio, which broadcasts ‘the thoughts of brilliant people, good music and cultural news’.  Apparently, locals will go and sit in or near the potato field and tune in via their own headphones.

Does the infusion of culture make for happier potatoes?  Does it improve the potato crop?  We don’t know.  But let’s just say, in 2021 the field was completely munched out by Colorado potato beetles.  Maybe the beetles like cultural broadcasts too.

Perhaps to combat the beetles, cotton and sunflowers are now interspersed with the potato plants.  When we visited, the potato harvest was finished and the field was overgrown with sunflowers, guarded by a grumpy cat.  So there wasn’t much to see, but we just love the story. 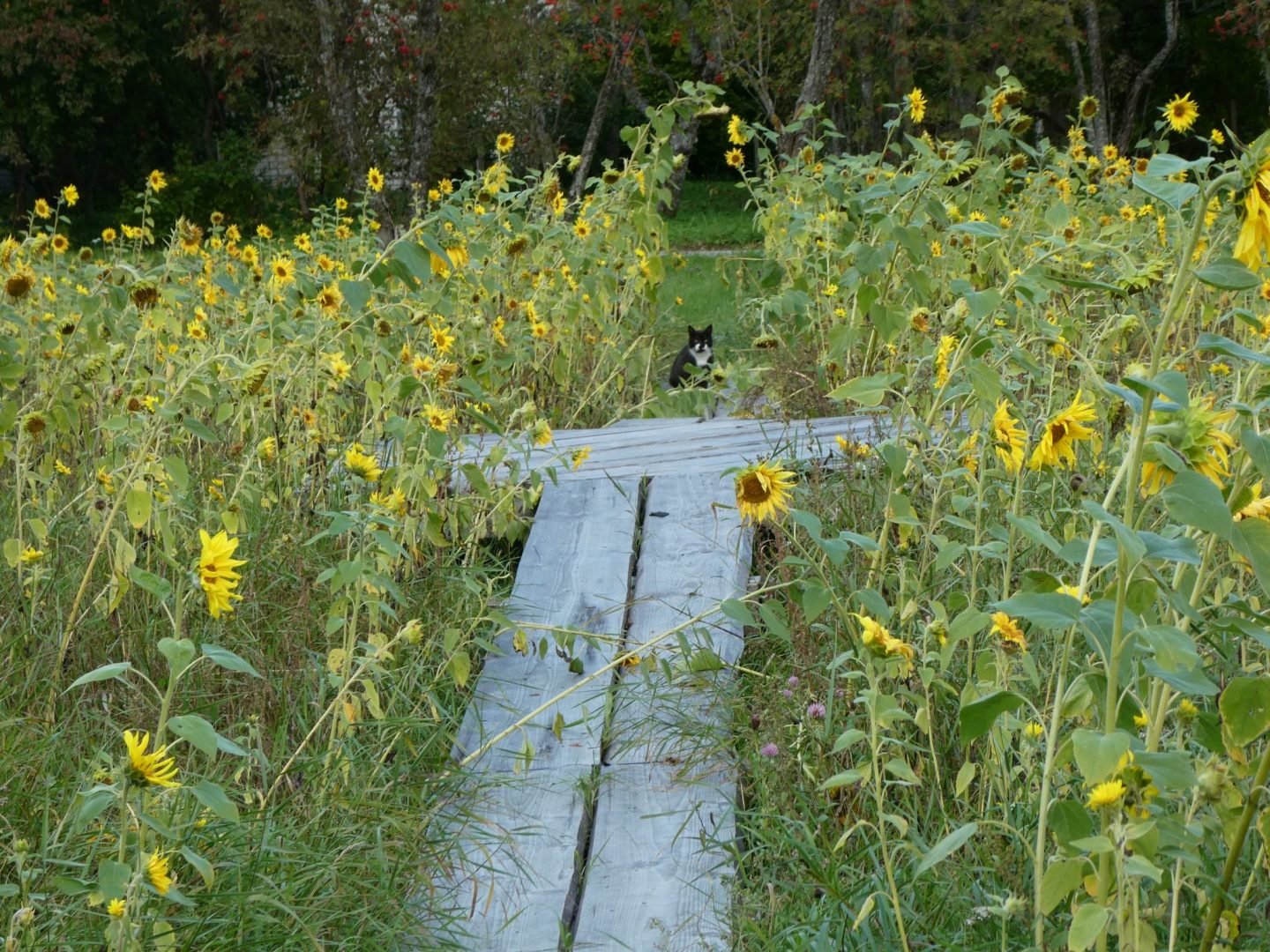 Forty minutes by bus from Kuldiga is the very sleepy town of Sabile. 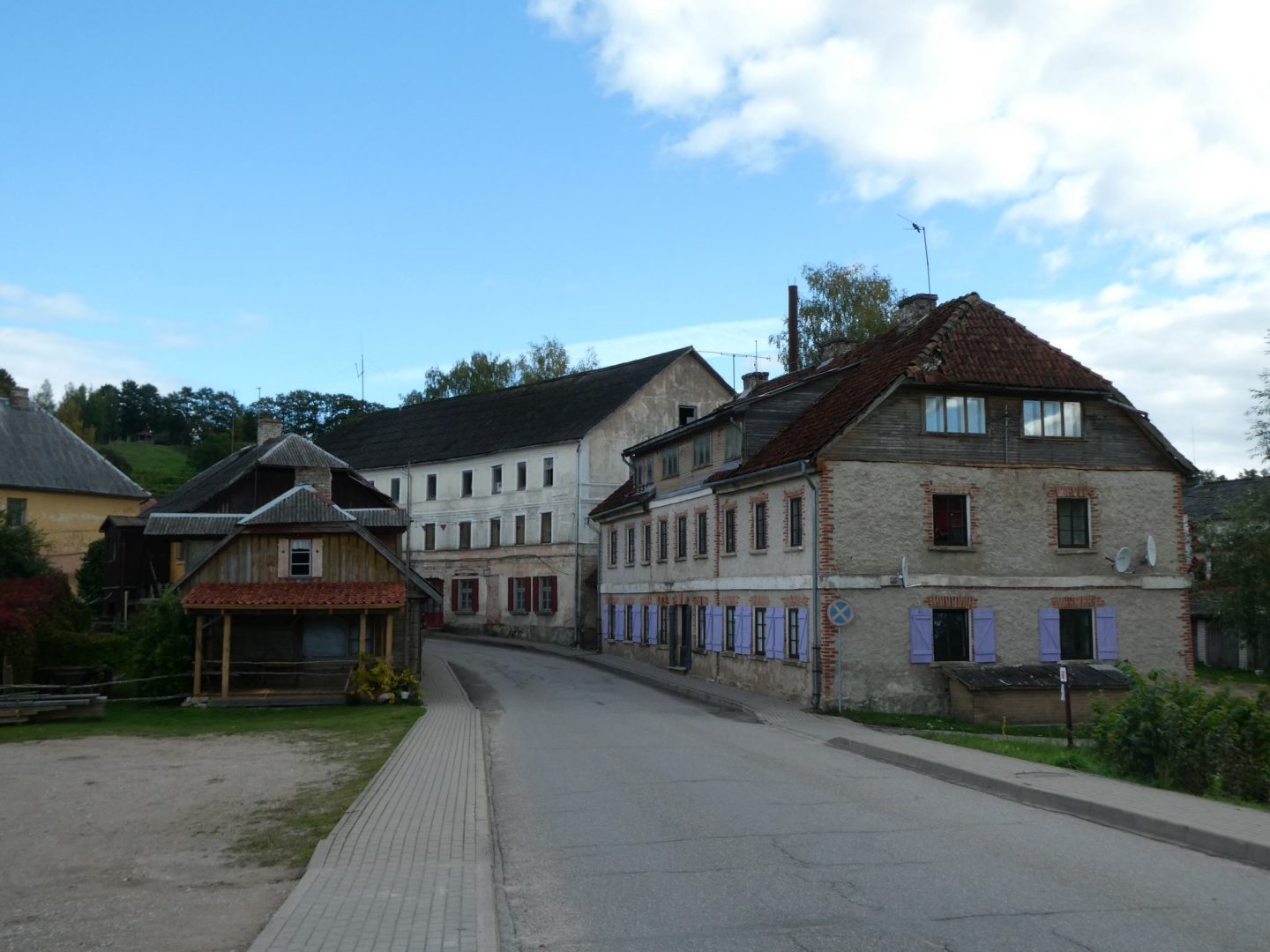 And thirty minutes walk from Sabile is Pedvale Open Air Museum founded in 1992 by local sculptor, Ojars Feldbergs as a setting for environmental art.

That’s a fancy way of saying: on an area of almost 100 hectares of land comprising cleared land, meadows, woodlands and streams, more than 100 large pieces of ‘art’ have been installed.  With the aid of a mud map, you walk around and admire the sculptures.

We went specifically because Julie had seen a picture of Sky Chair, a huge armchair constructed from oil drums and painted blue. 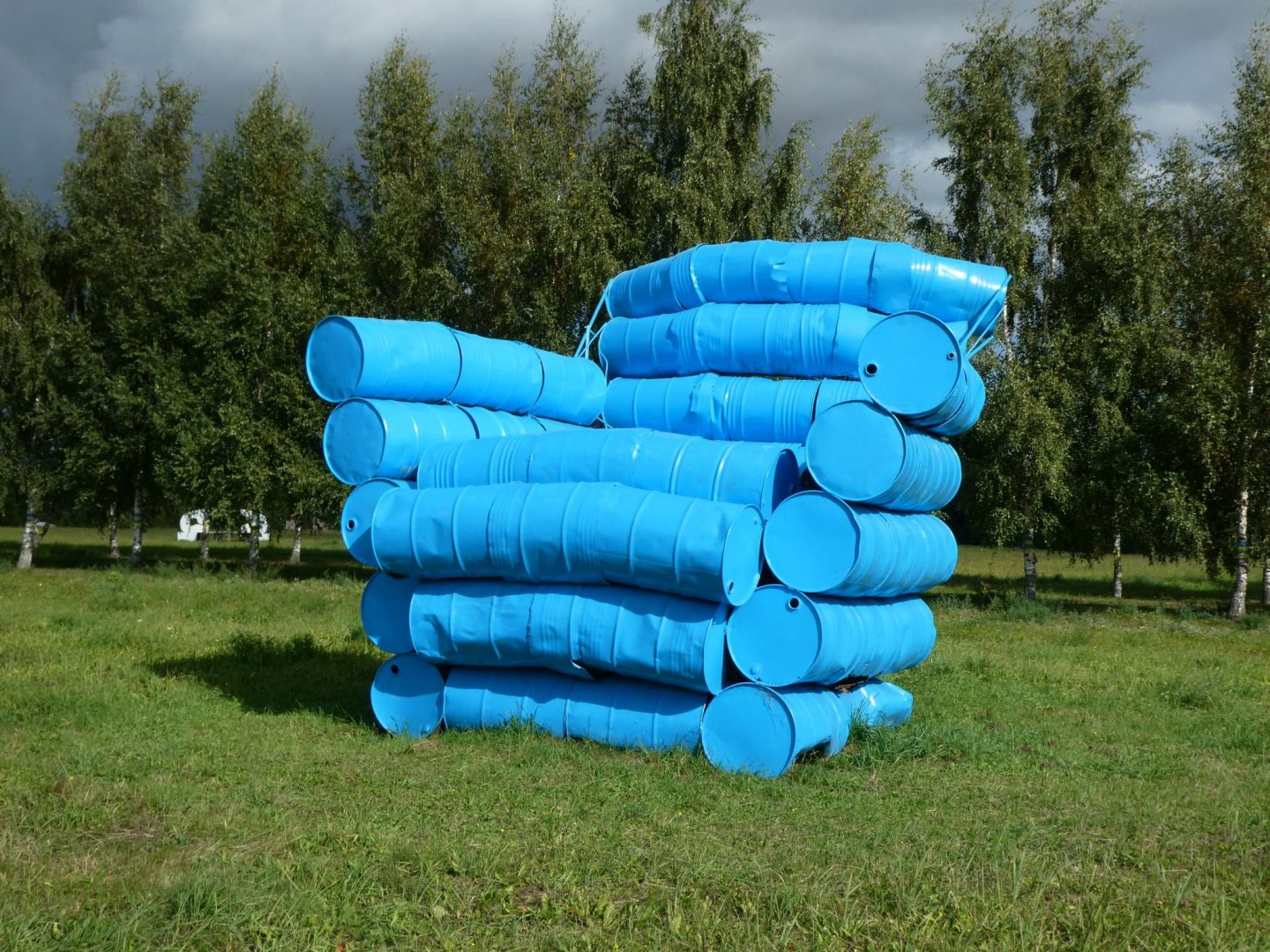 But most of the others are just variations on ‘big lump of rock’.  Some might love it.  We found them rather boring.

Unsurprisingly, quite a few are by the park’s founder.  Perhaps he couldn’t find another home for them.

Eight Logs Leaning Against the Stone might have been an obvious name for this one – except there were only seven logs. 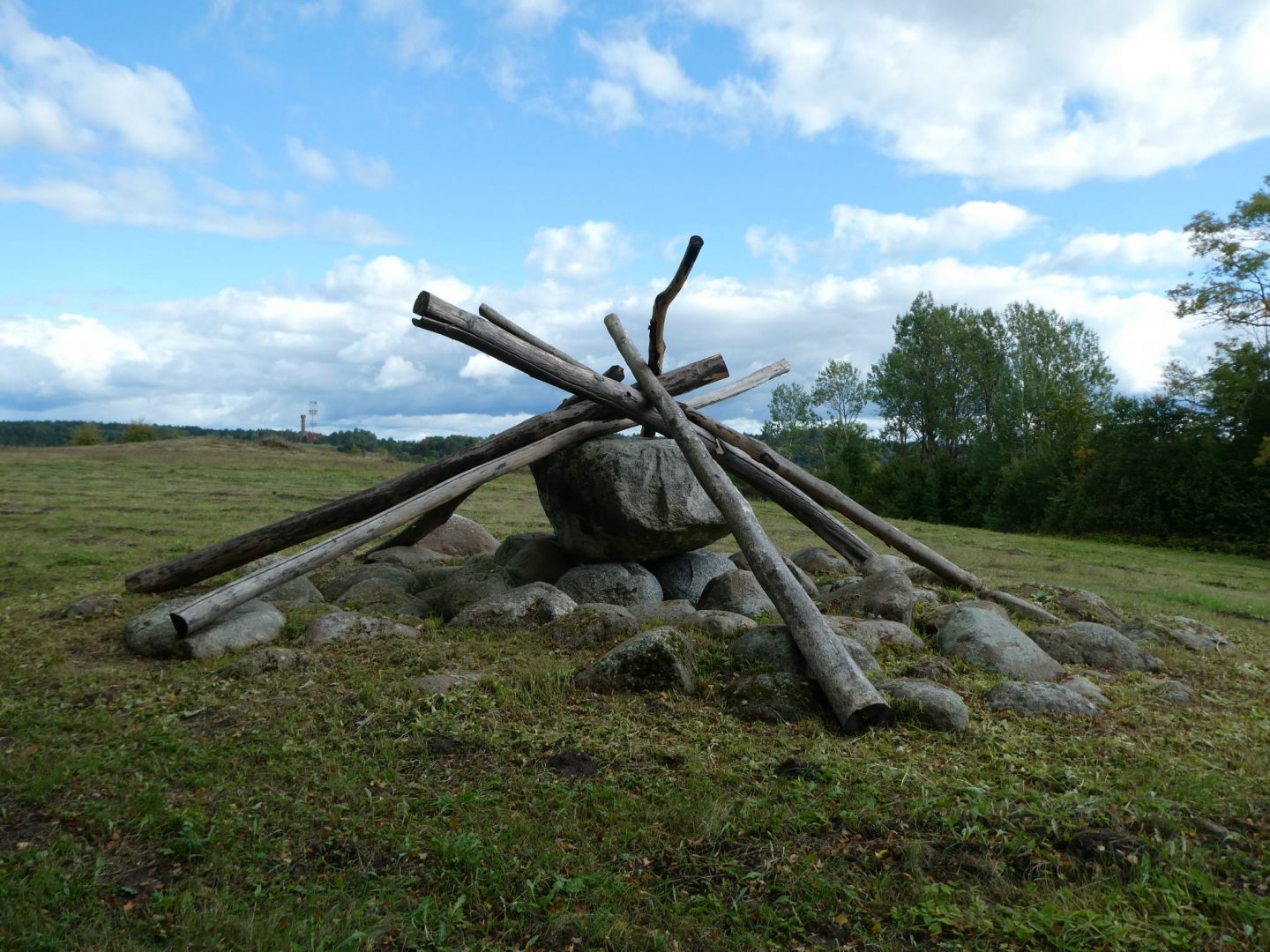 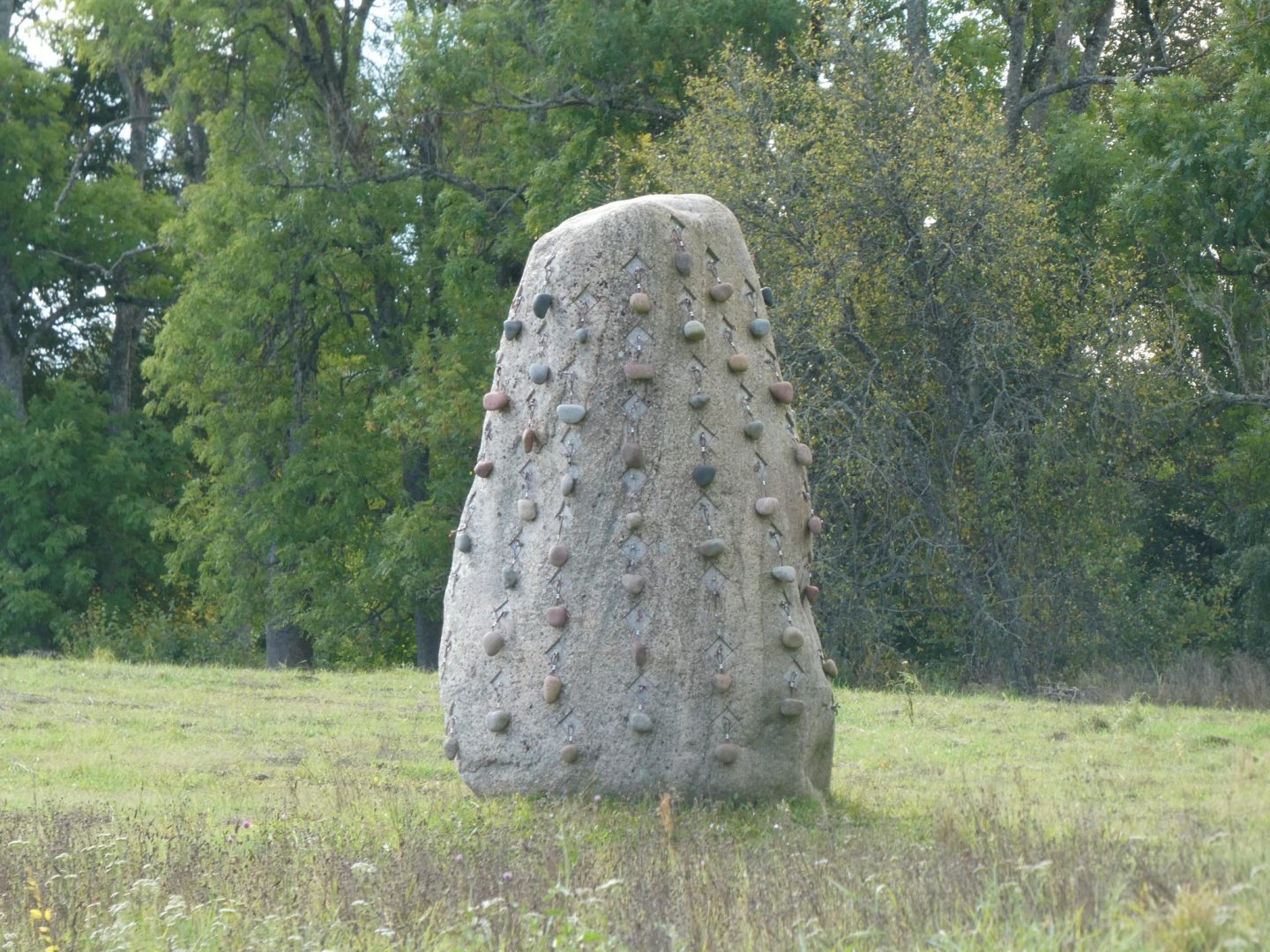 The creations of others weren’t much better.  This one is Sprouts by another Latvian sculptor. 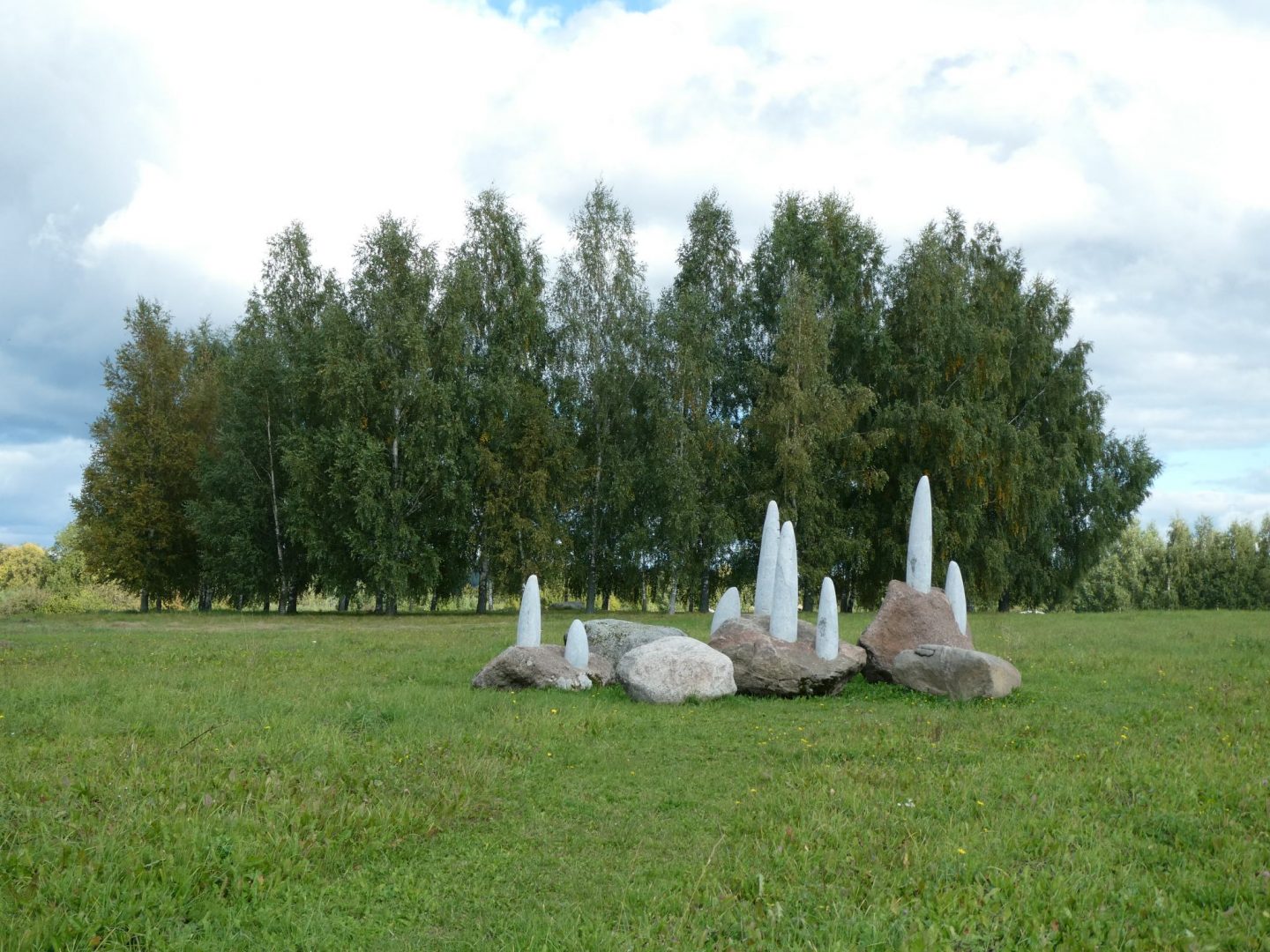 You don’t need to see A Big Vase for my Rhododendrons by some Finnish guy.  You get the idea.

John was remarkably sanguine about this ramble in the countryside.  The art wasn’t great but the walk itself was very enjoyable. 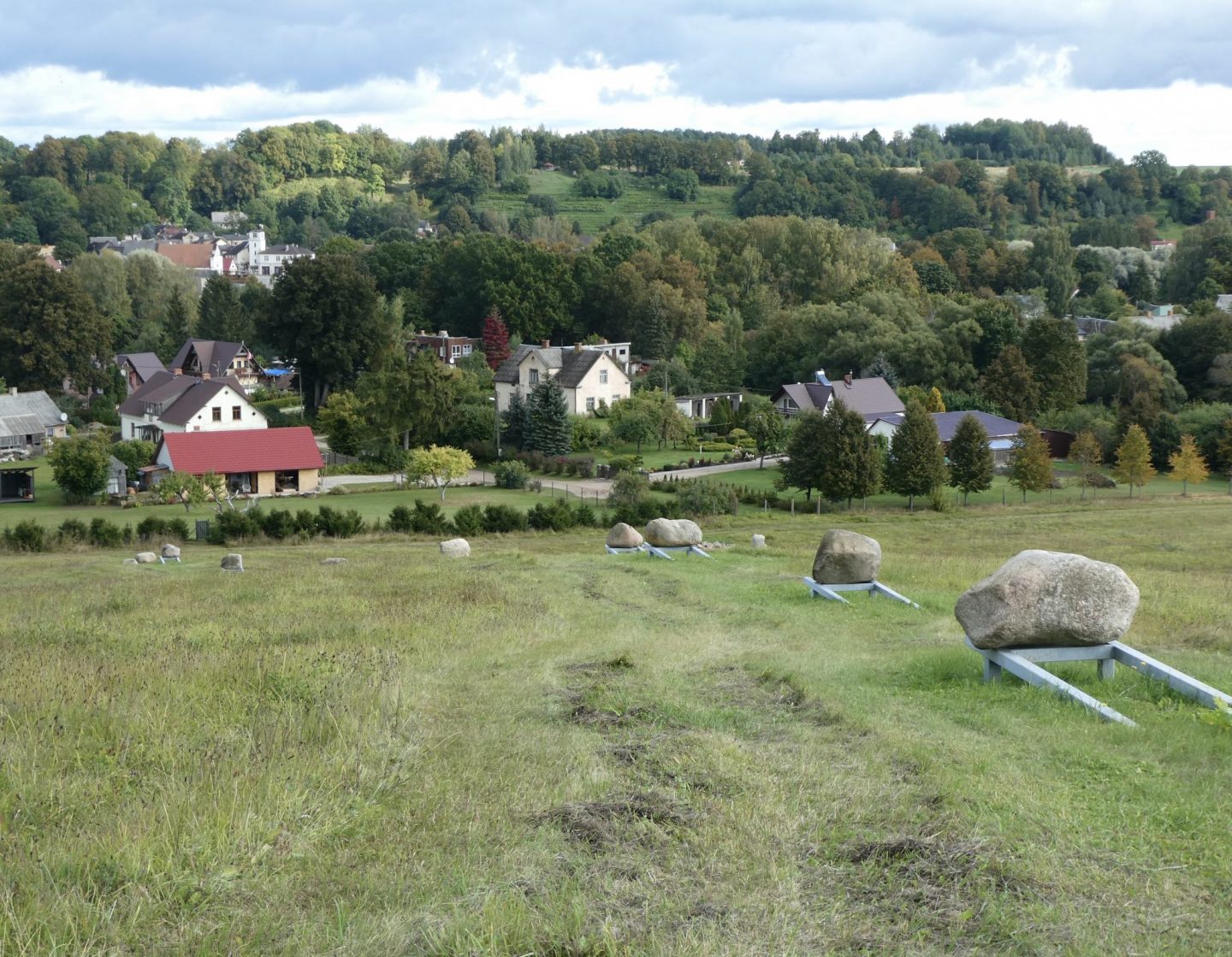 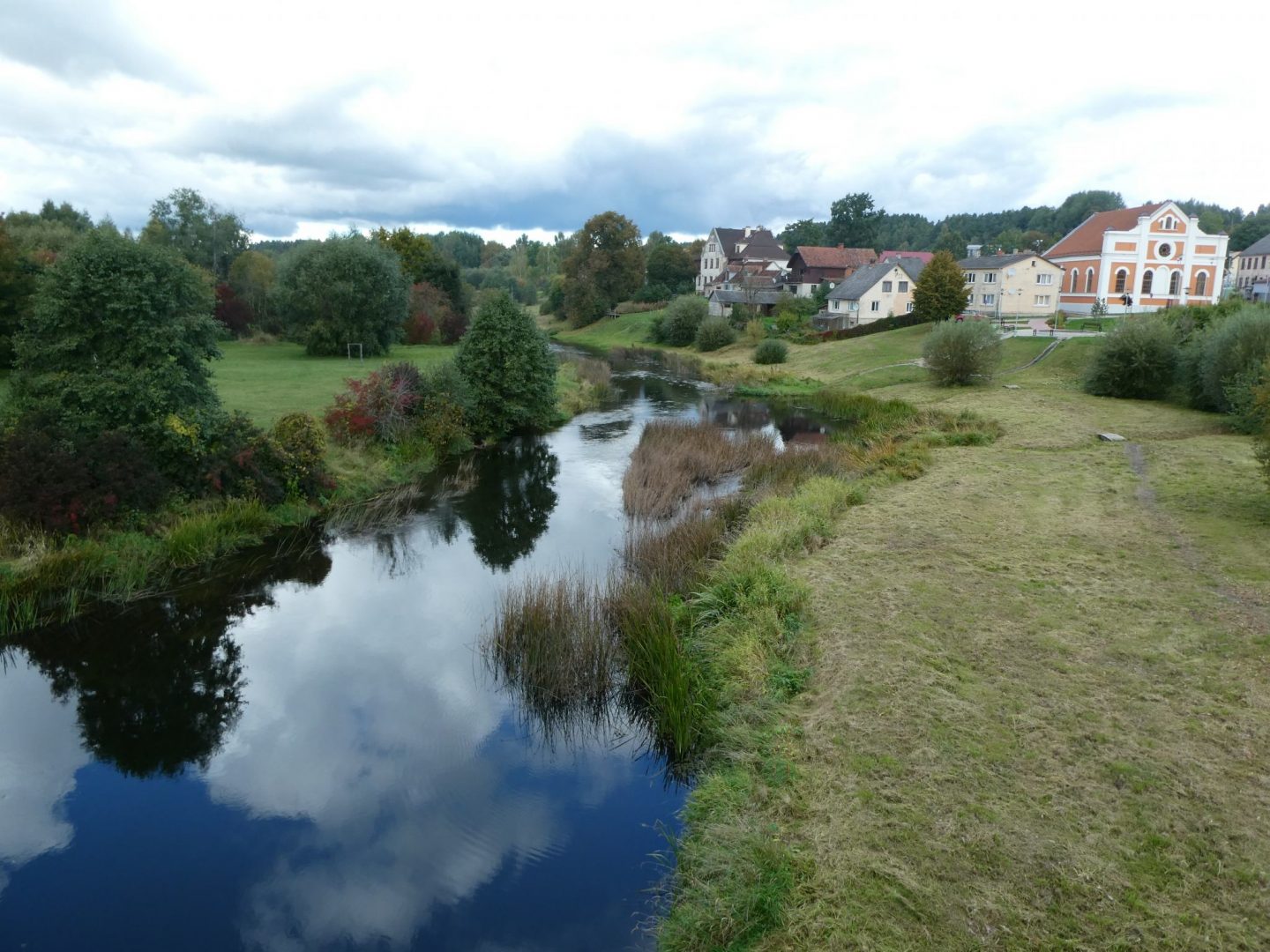 And so ends our Latvian travels.  Now on to Lithuania.