According to one legend, a Roman patrician who fled Rome after incurring the wrath of the mad Emperor Nero travelled north and settled in the area which is now Lithuania.  On his death, his lands were divided between his three sons.  One of them, Kunas, received land and built a fortress at the confluence of the Nemunas and Neris Rivers.  The city of Kaunas was born.

Whether that’s true or not, archeological investigations suggest there has been a town here since Roman times.  It has a long and distinguished history.  In the 14th century, Kaunas was the capital and largest town of the Grand Duchy of Lithuania which included present-day Ukraine, Belarus and parts of Poland and Russia.

Seven centuries and several empires later, Lithuania is a fraction of the size, and Kaunas in many ways plays second fiddle to the capital, Vilnius.  Yet it is a vibrant city with a wealth of interesting things to see and do.

Built in the 14th century and extensively restored in 2010, Kaunas Castle now houses a branch of the city museum. 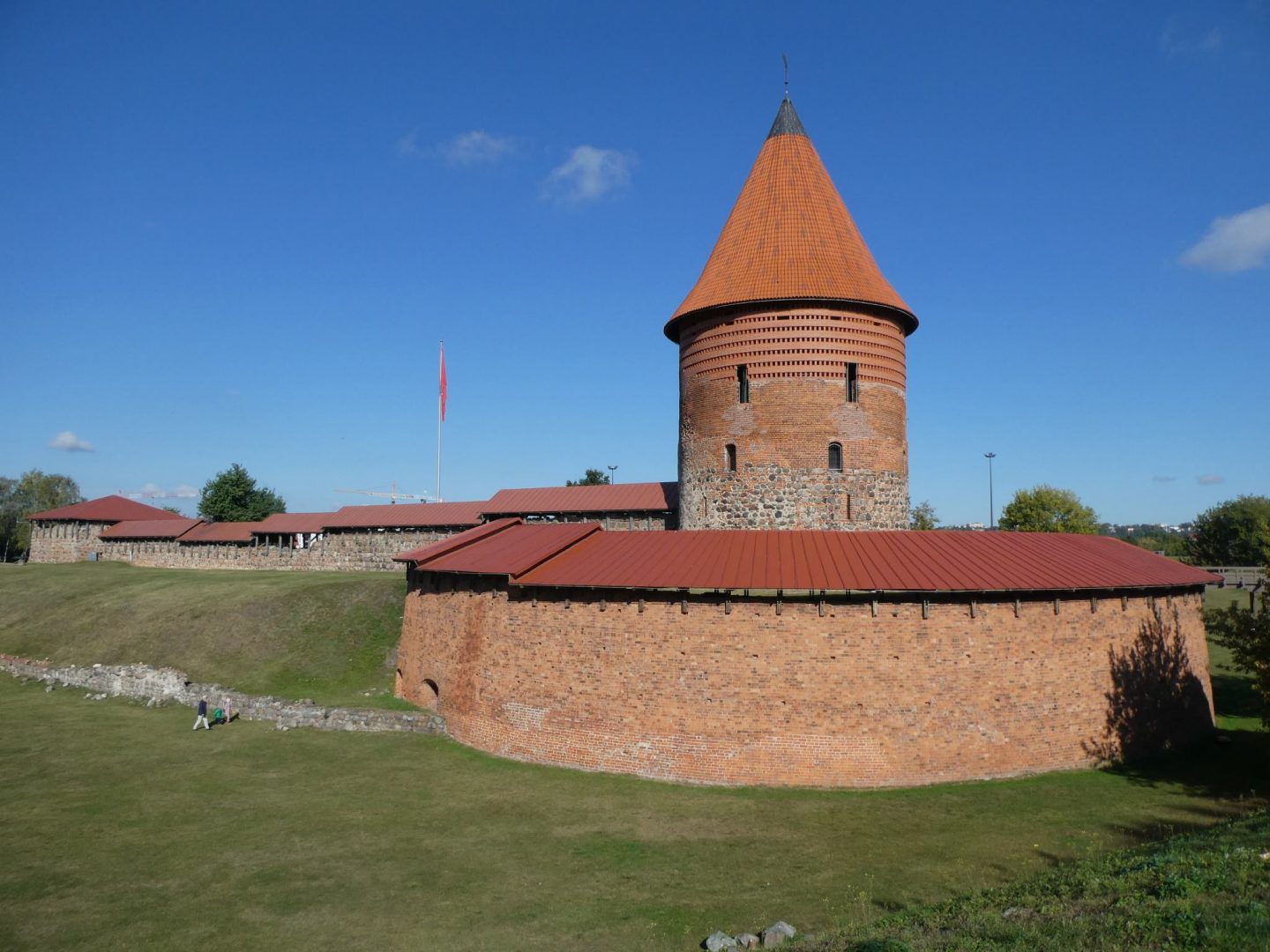 You might think the seven metre high Freedom Warrior near the castle entrance is a relic from earlier times, but it was actually only installed in 2018.  You can’t blame the Soviets for every over-the-top statue in the former USSR, it seems. 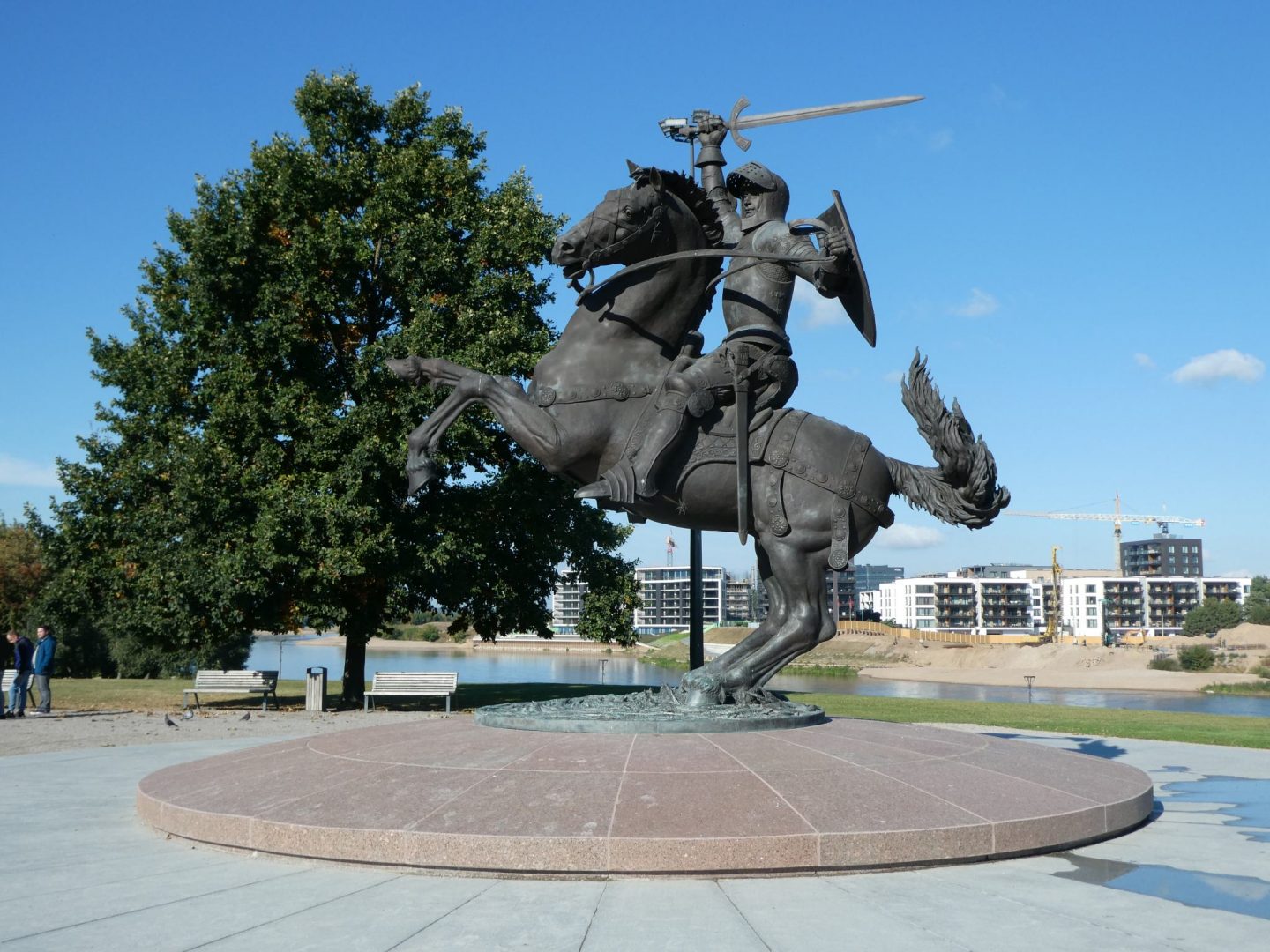 Inside the Old Town, the tone is much more refined.  Traffic-free, cobbled streets filled with cafes and shops. 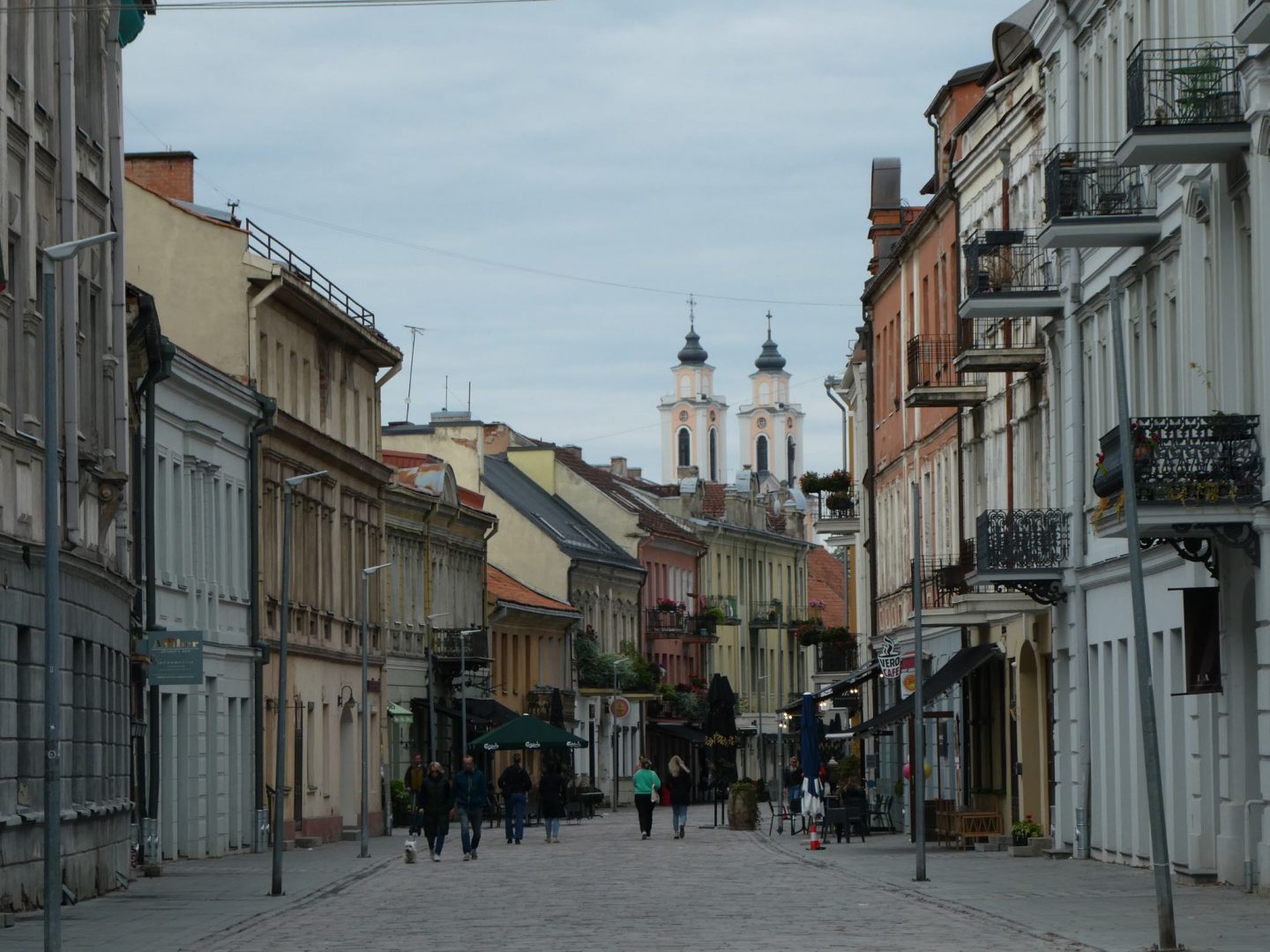 In the centre is Kaunas Town Hall, nicknamed the ‘white swan’.  Built in 1542, it has had plenty of add-ons and refurbishments.  It is under wraps again for more work. 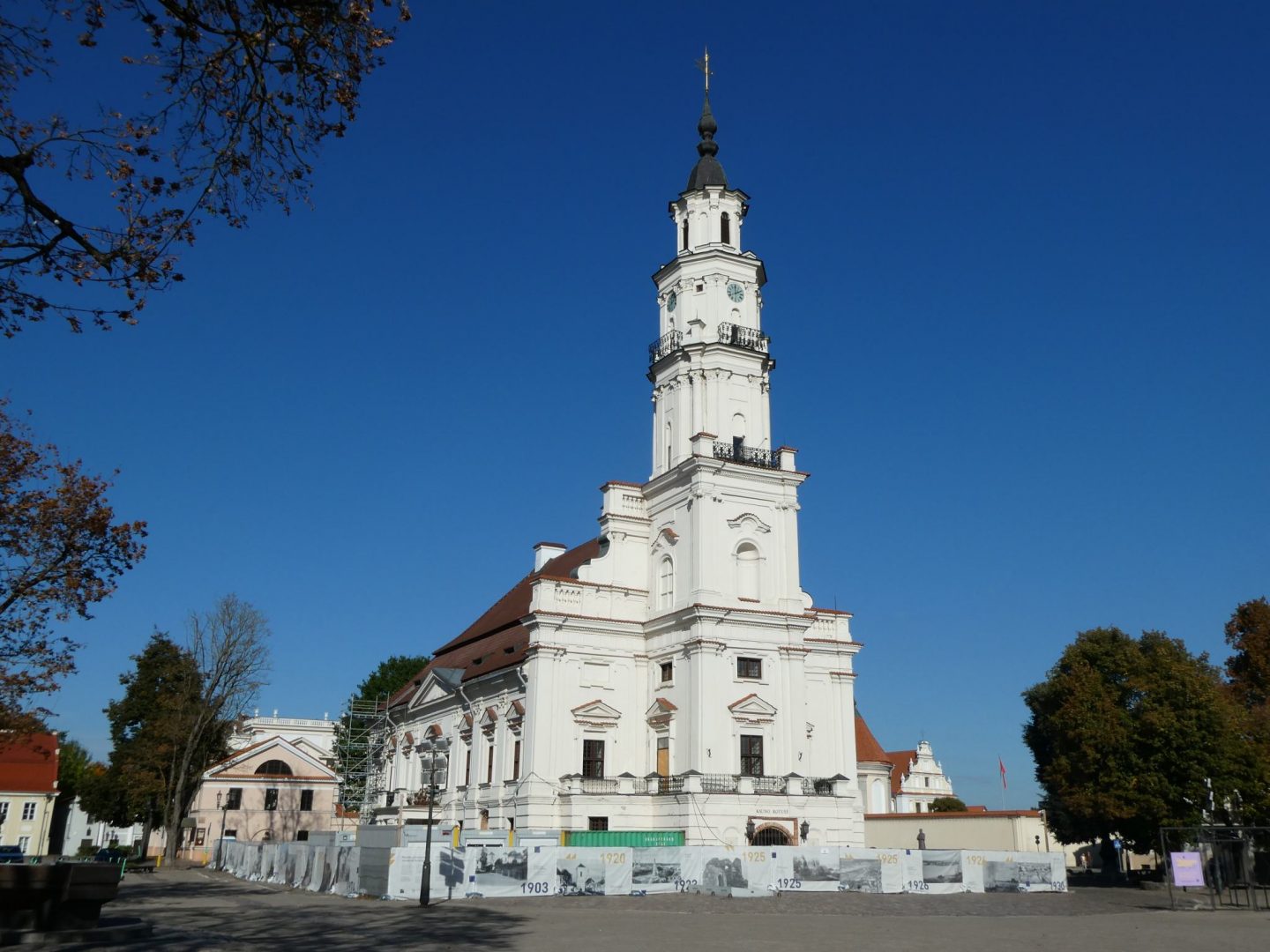 In the period between WWI and WWII, Kaunas was the de facto capital of the newly independent Republic of Lithuania because Vilnius and surrounds were still held by Poland.  Especially in the 1930s, the city experienced an explosion of architectural creativity now termed ‘national style’.  Essentially it was Art Deco into which Lithuanian architects incorporated ‘traditional Lithuanian aspects’.  So many of these are still intact that Kaunas is seeking UNESCO listing for them on the basis of their uniqueness. 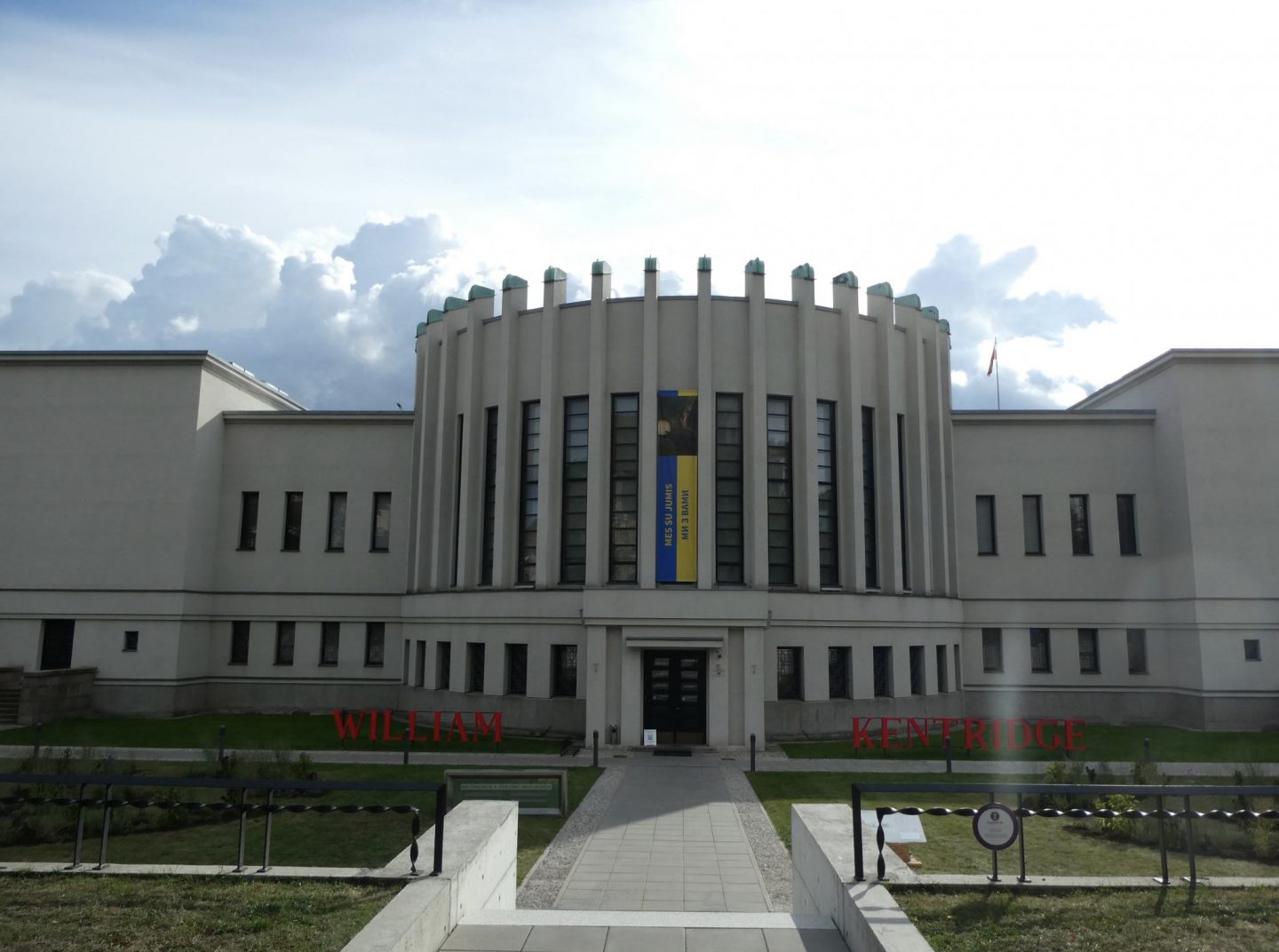 Kaunas has an arty, creative feel which is reflected in some groovy street sculptures like the Puppetmaster who sits outside the theatre, elegantly sipping his espresso and keeping an eye on the bird who’d like to share his cake. 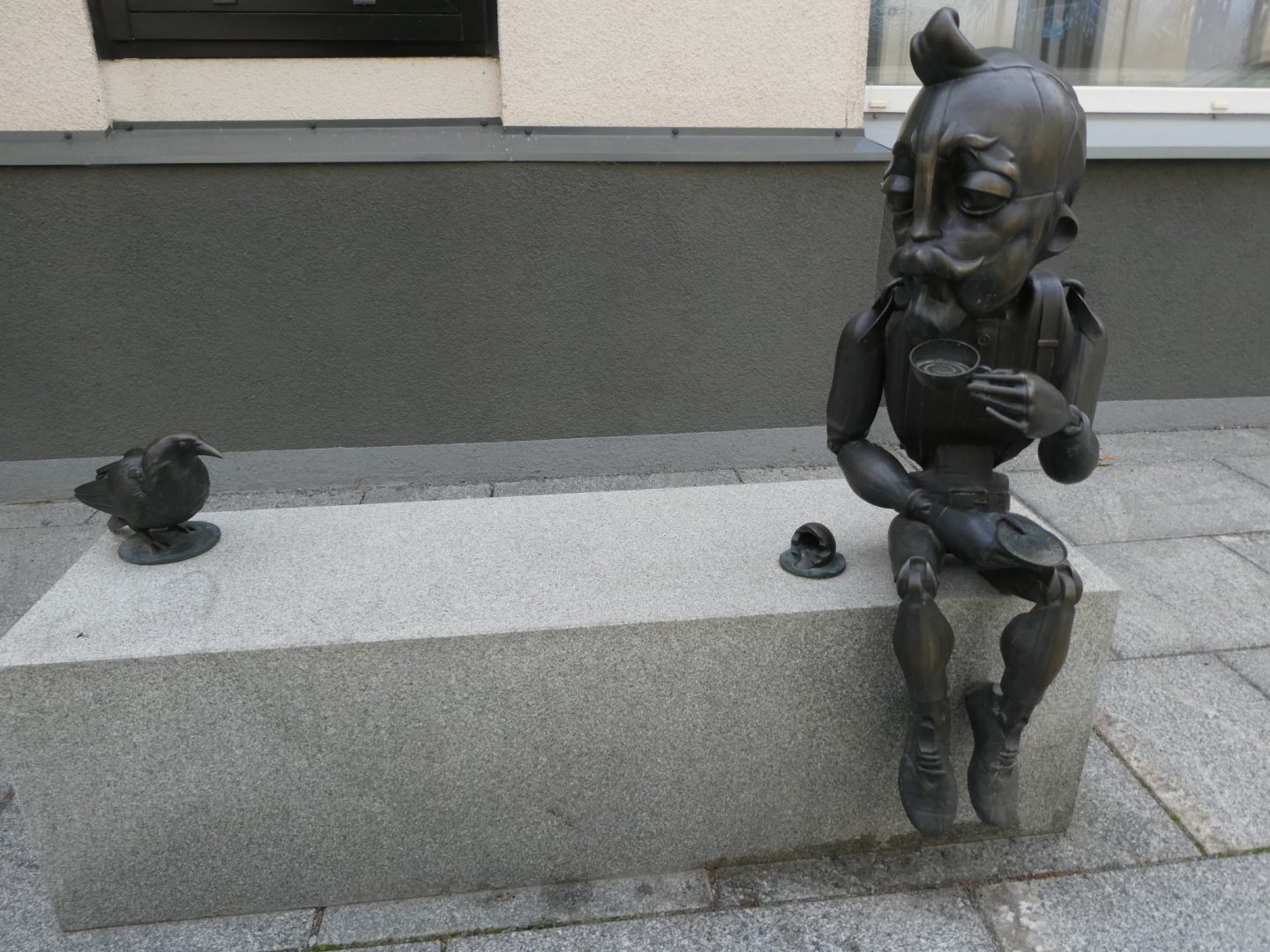 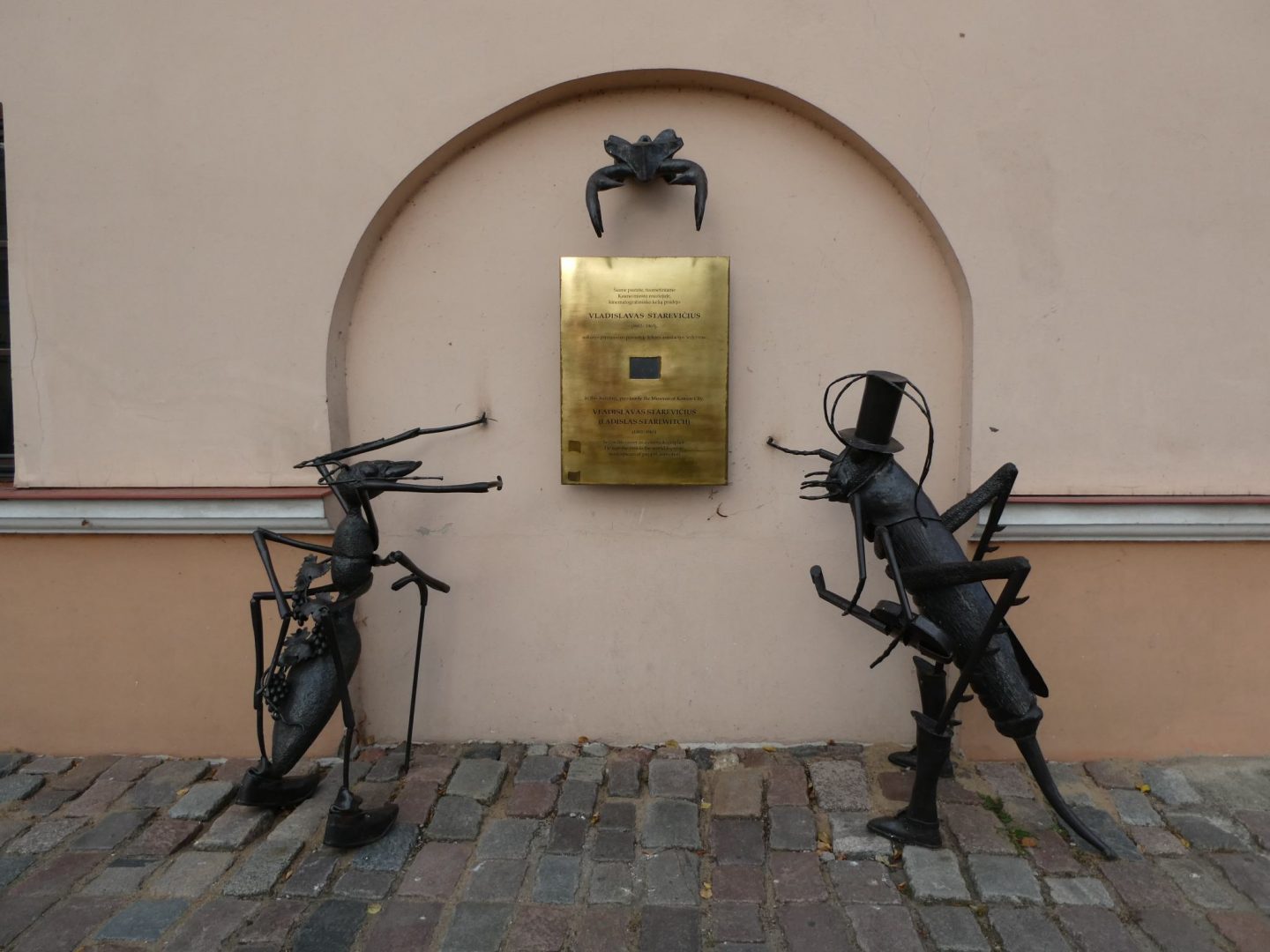 The story of Yard Gallery is a great example of the creative vibe.  It’s in a small compound of apartment blocks.  An entrance from the street leads to an open space which residents once used for socialising and communal gatherings.  Gradually, it became more of a car park for residents and with many changes of tenants, people didn’t know their neighbours anymore.

Enter artist Vytenis Jakas, who moved into one of the apartments a decade ago.  He was sad to see that neighbours didn’t know each other and didn’t interact much.  He decided to try and reinvigorate a sense of community by painting a mural and inviting his neighbours to bring out some snacks and discuss the picture.  It went on from there and now there are many murals in the yard and a strong sense of community spirit among the residents.  With great generosity, they don’t mind if strangers wander in to have a look.

Jewish families had lived here before WWII and some of his first murals were based on old photographs of them. 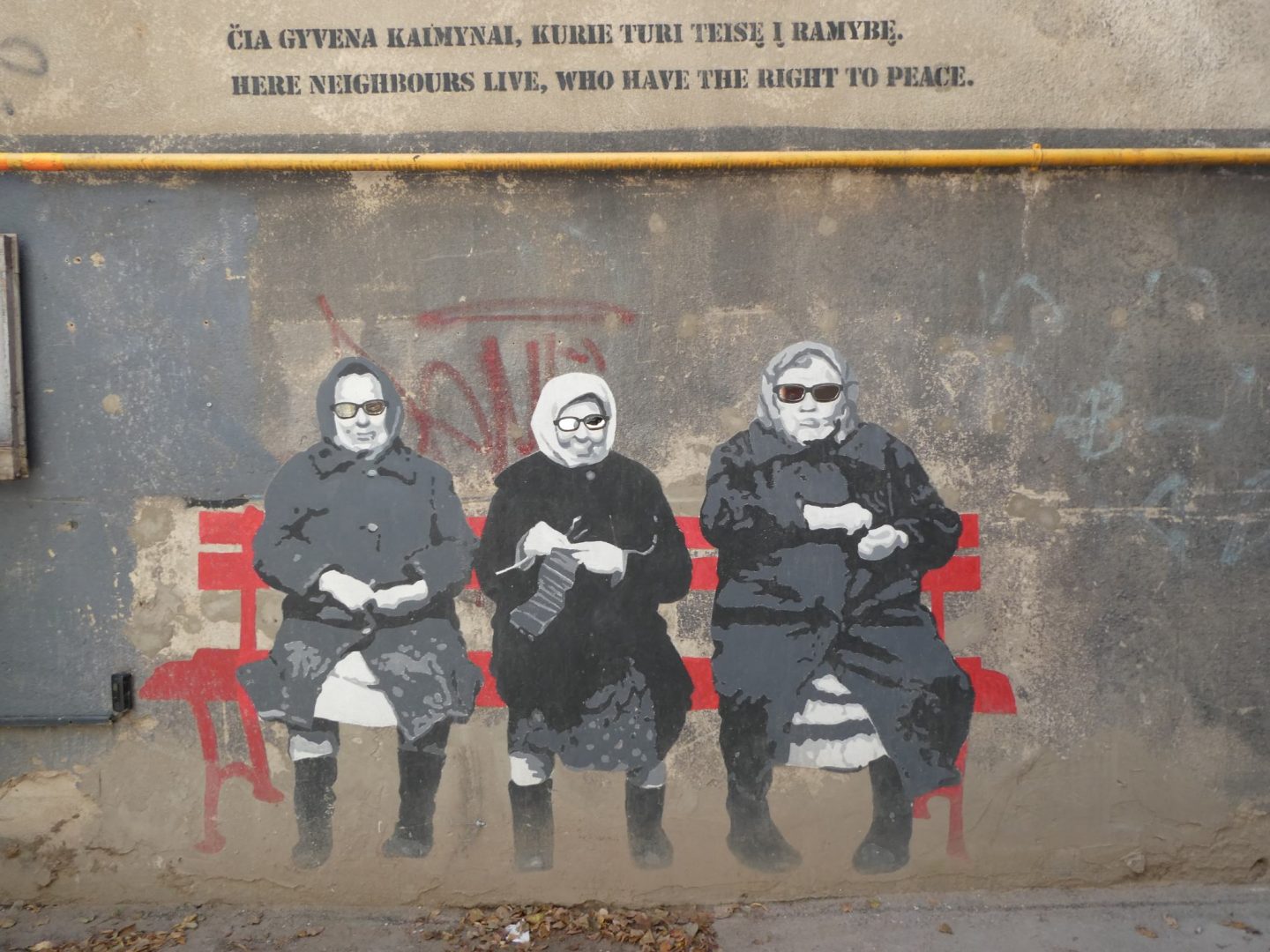 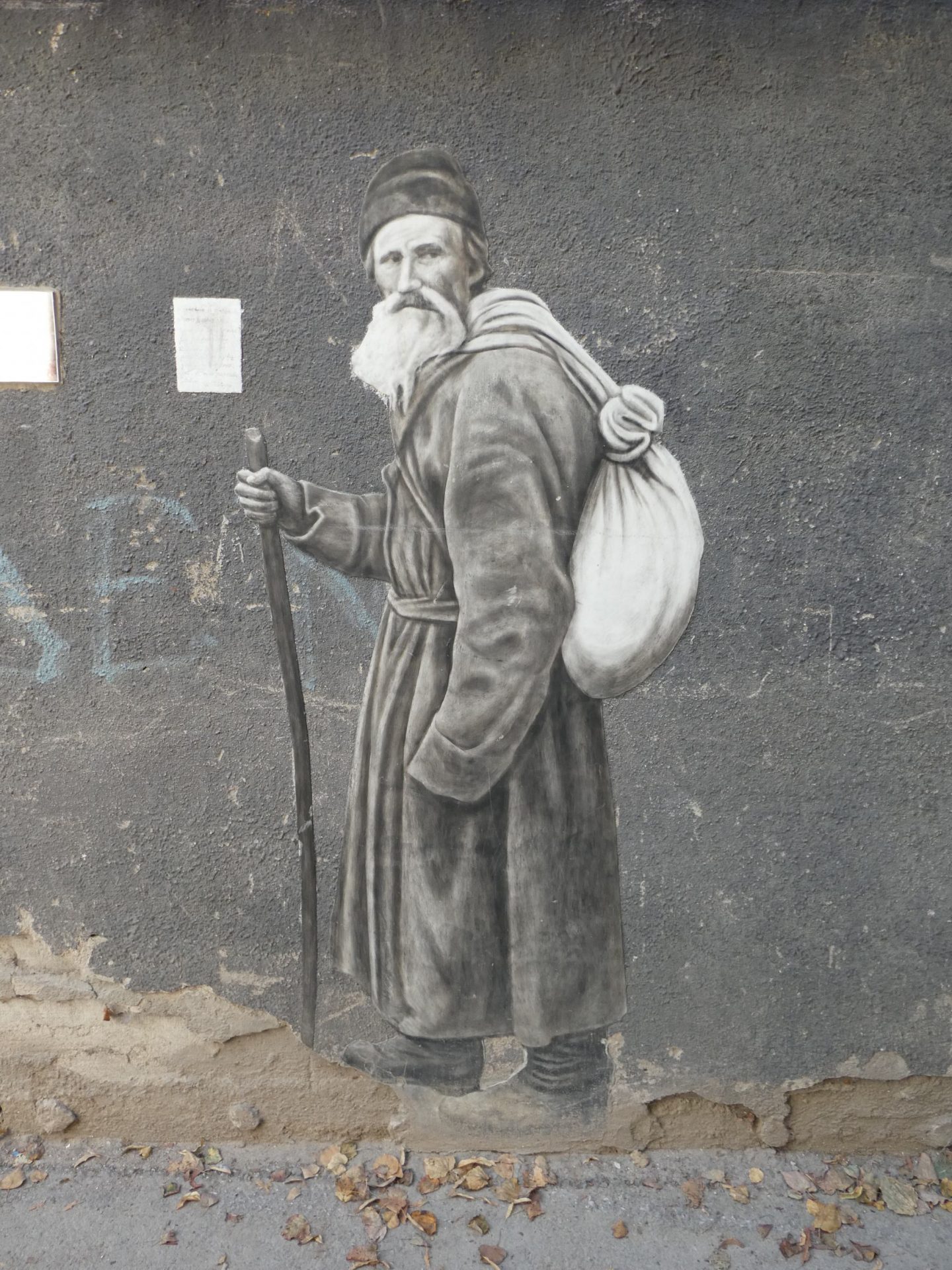 Previously, families would celebrate weddings in the yard and when a young man from the neighbourhood married a few years ago, a mural was created for him and his bride, complete with real shoes. 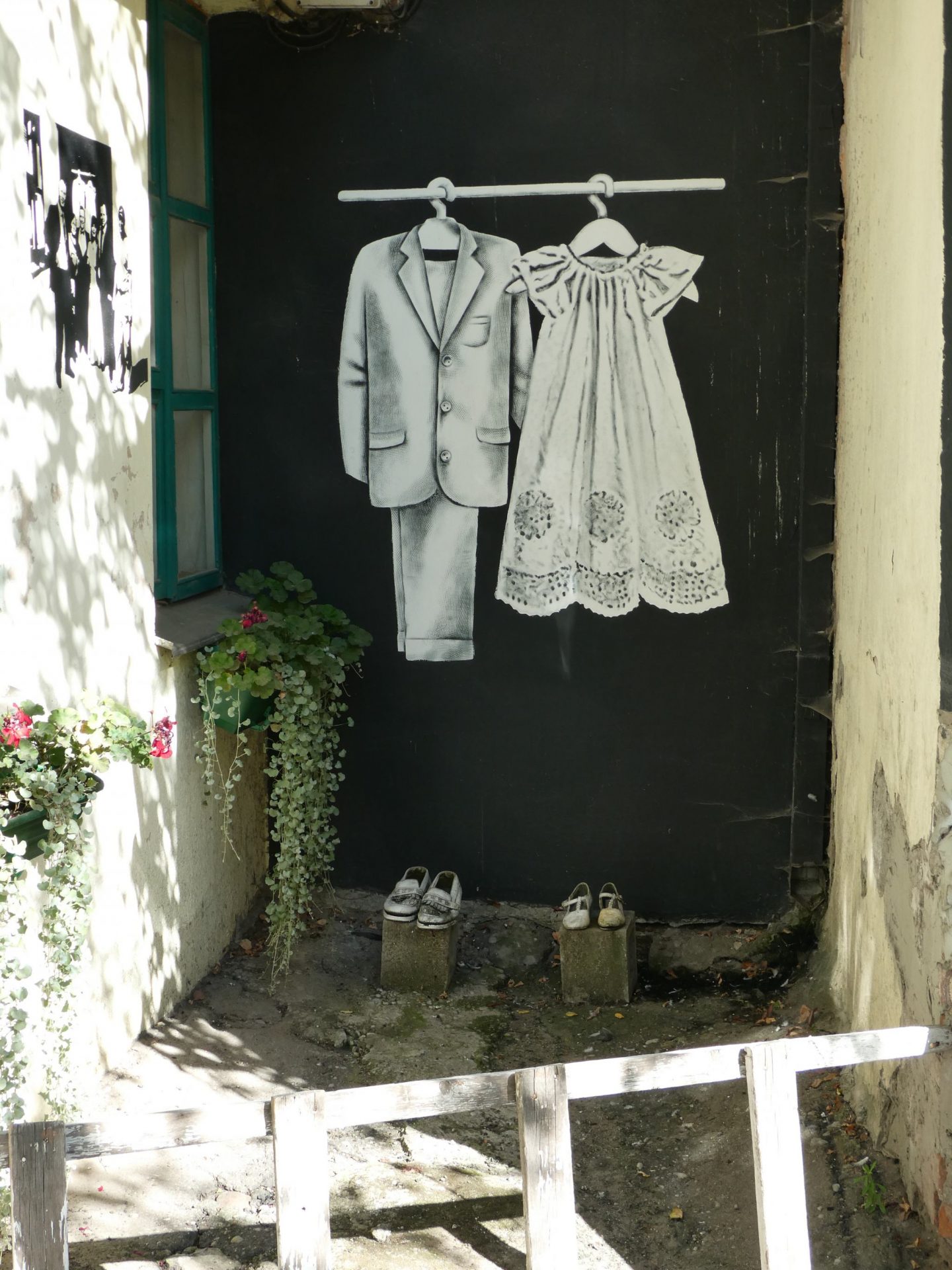 This one is clever.  Only when you get close do you realise it isn’t stairs into the building, just a mural. 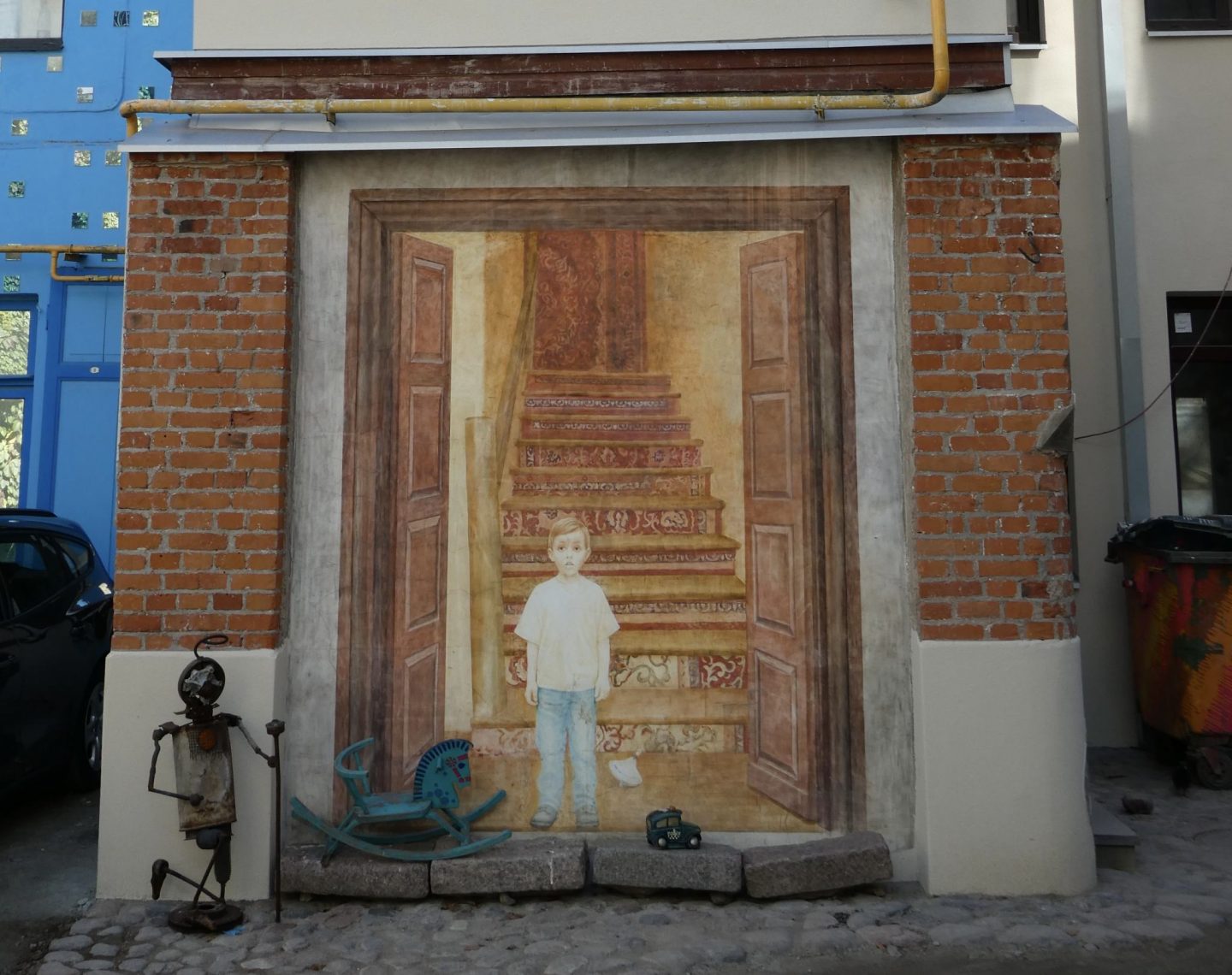 In a similar vein, this cat surveys the lane entrance from a window which isn’t there. 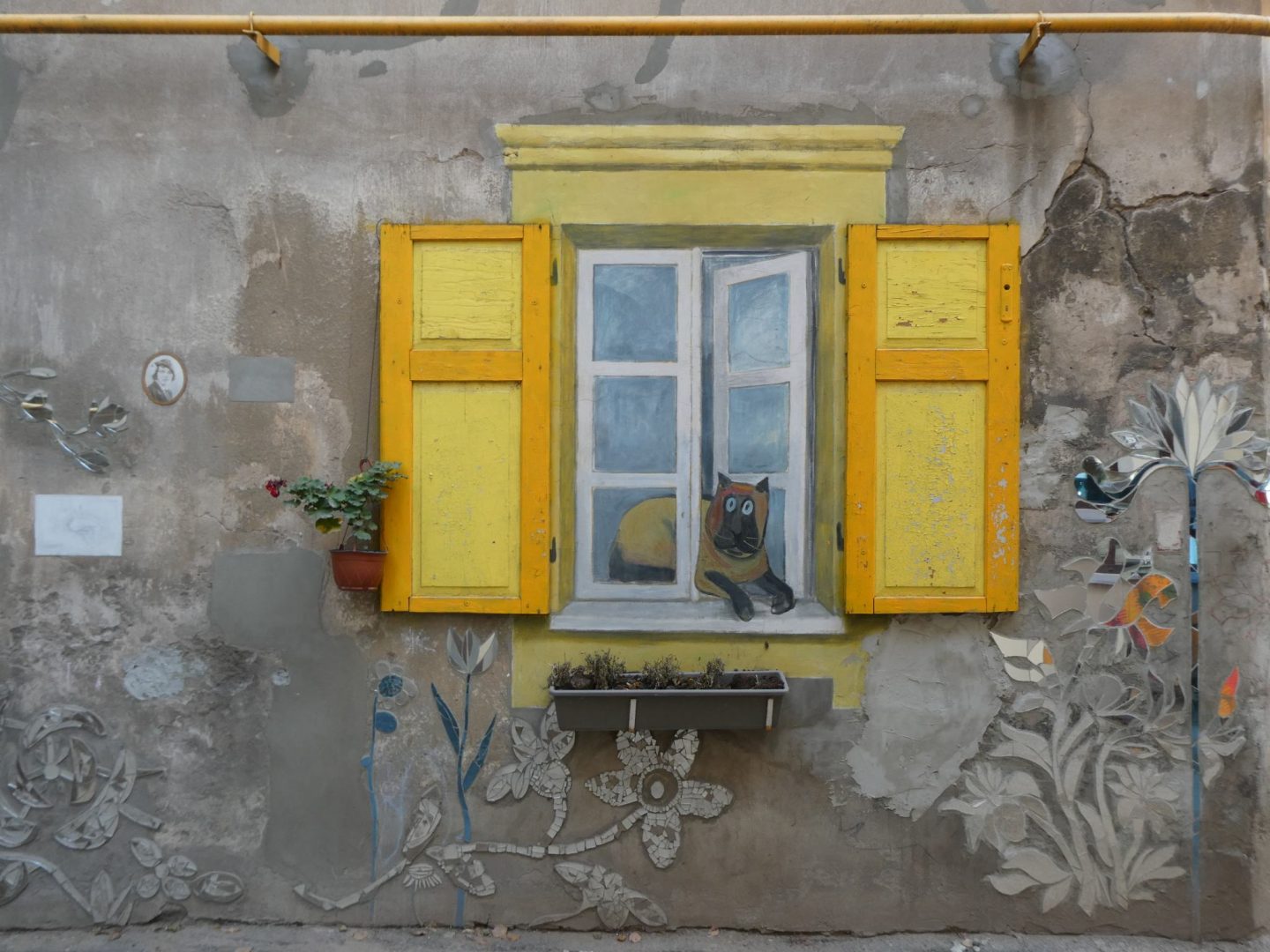 It’s not just in the Yard Gallery.  There is good street art scattered all over the new parts of the city.  Kaunas has quite a reputation for it.  Here are some of our favourites.

Wise Old Man has become a symbol of the city. 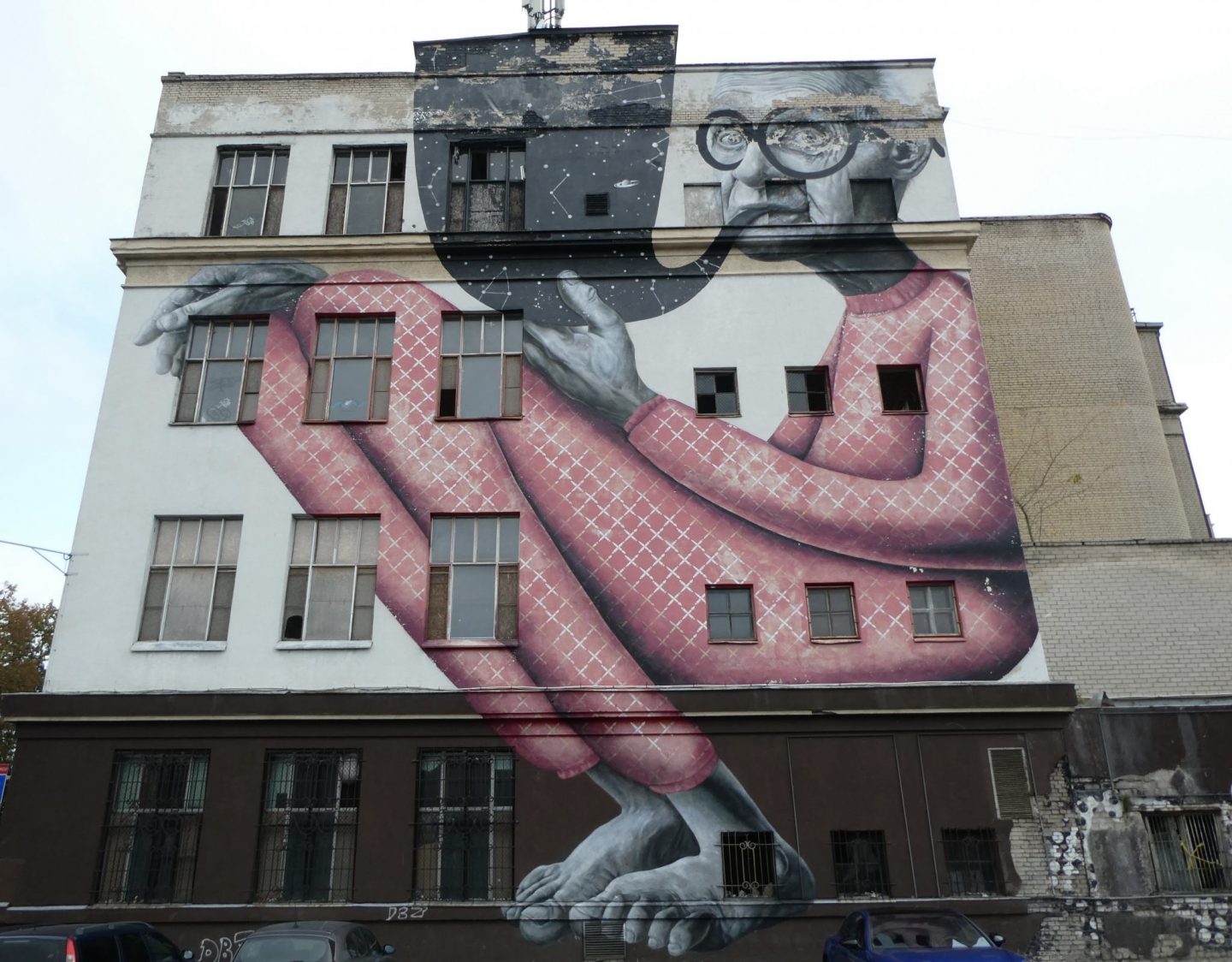 He looks out over the location of the weekly outdoor fresh market to an unnamed piece on a wall opposite. 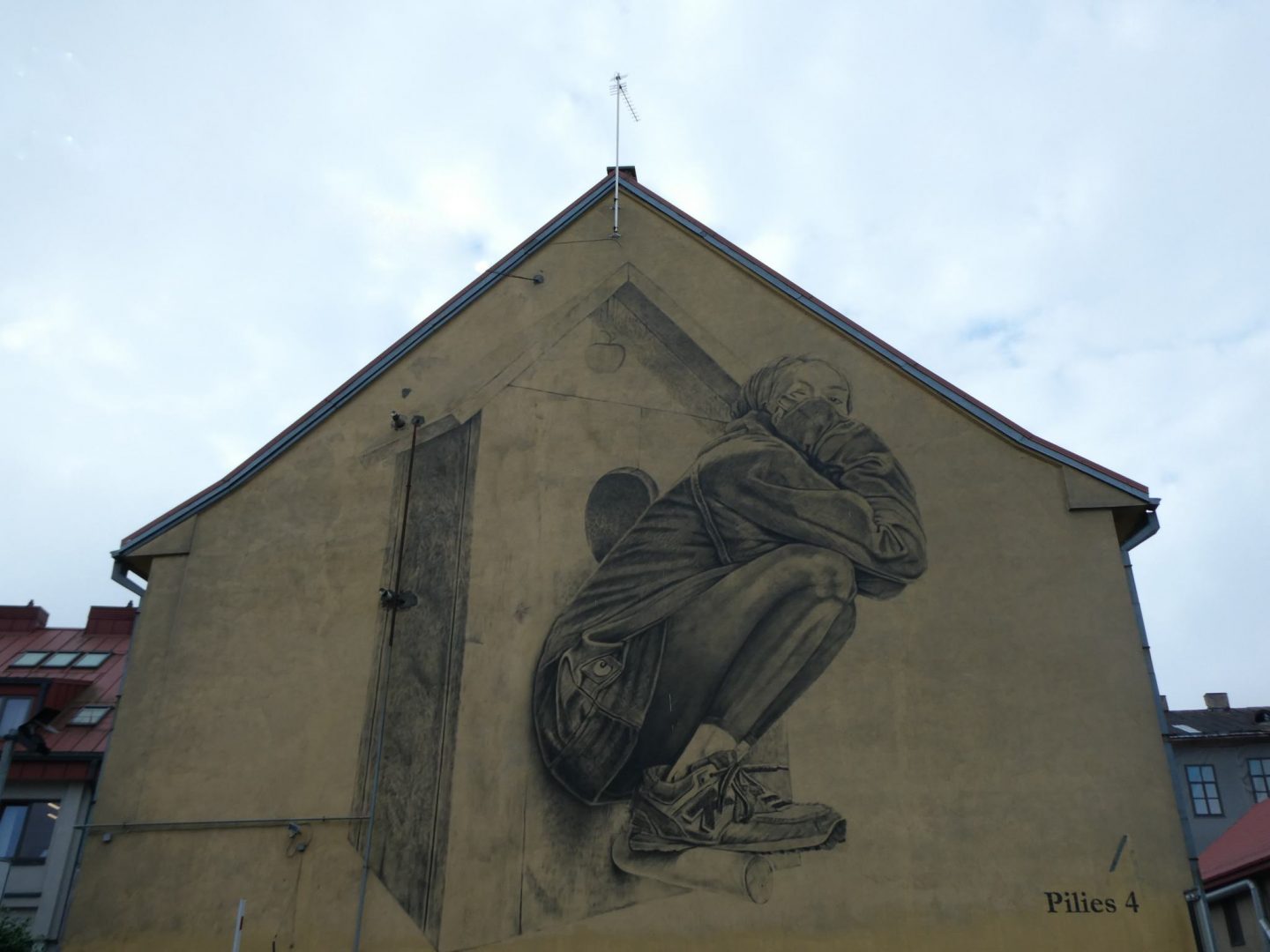 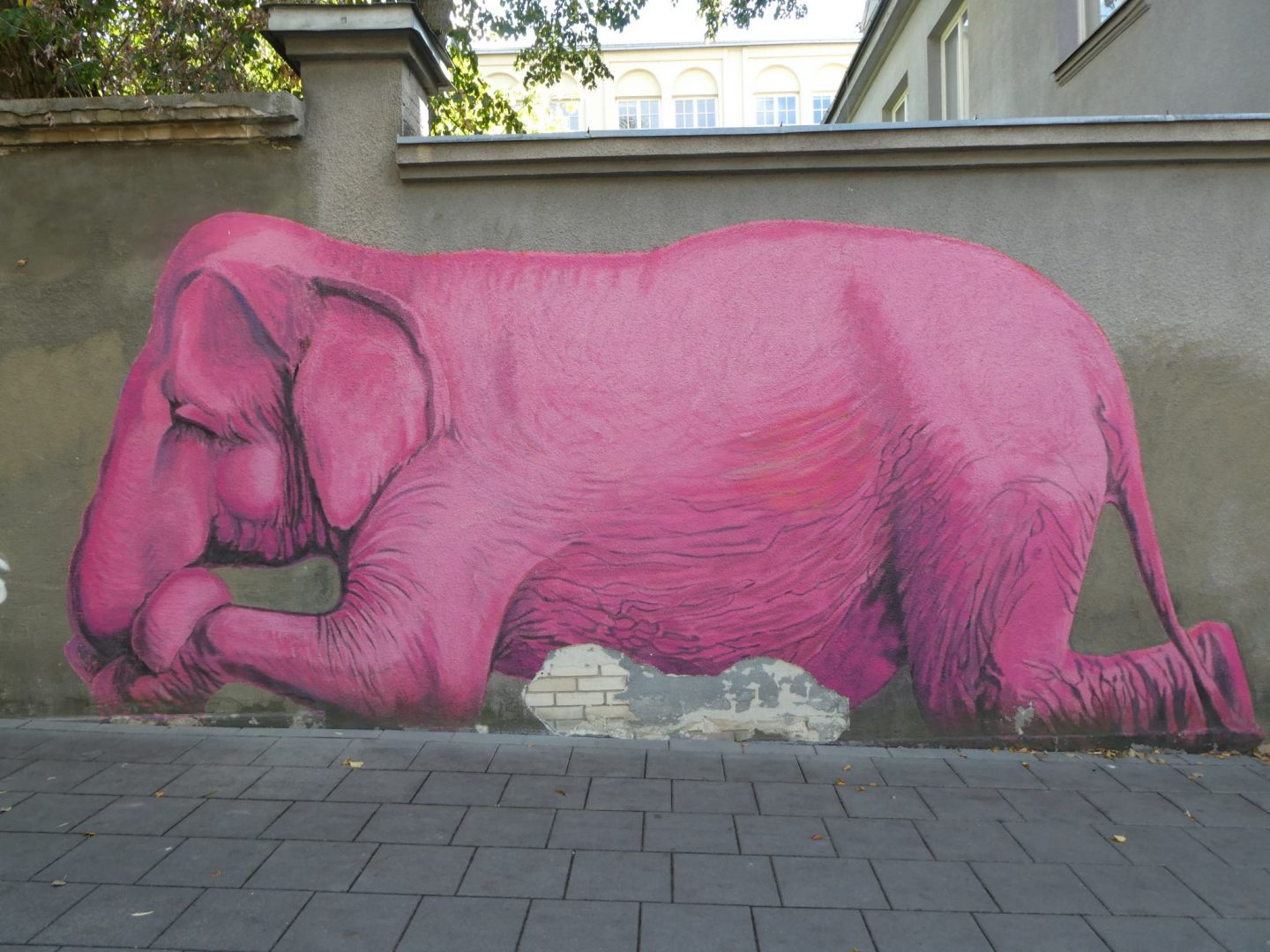 Britanika is one of several ‘ghost’ buildings in Kaunas.  Construction of what was to be a hotel began in the 1980s but it was never finished.  When Lithuania regained independence after the fall of the USSR it became a symbol of the city administration’s incompetence.  Permission was given for a building far taller and bulkier than regulations permitted, public demonstrations opposed the approval, litigation ensued, potential developers came and went.  The building stands all but derelict.  A dangerous dare of climbing to the roof has led to at least one death.

And graffitied along the top of the crumbling monstrosity is the longest word in the Lithuanian language.  Nebeprisikiskopusteliaujantiesiems.  Try running spell check over that one.  It translates to something like “particularly for those who never pick up enough shamrocks for themselves”.  What the ….?

That’s David and Goliath in the foreground, possibly referencing the public’s objection to the planning approval process. 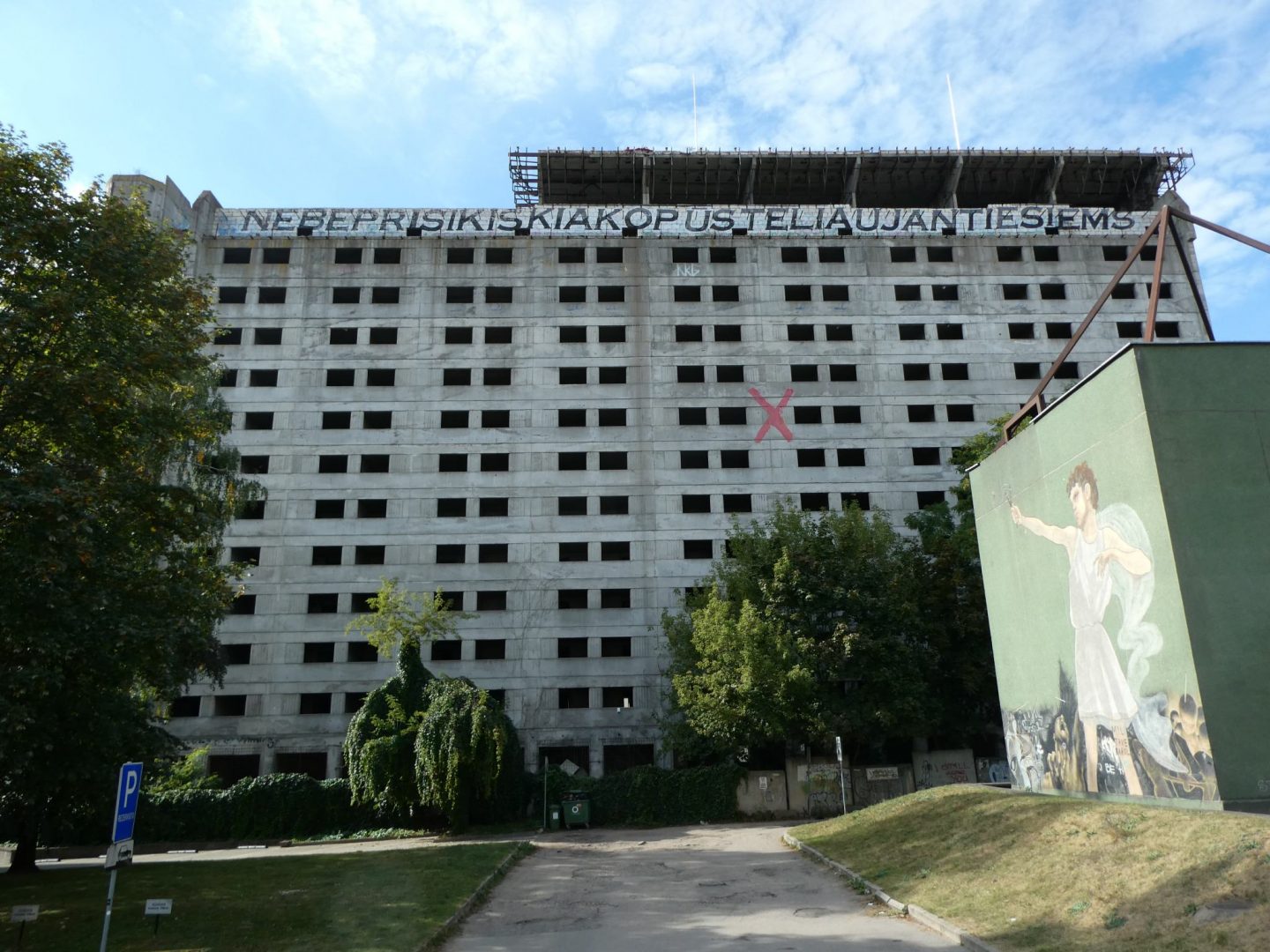 Kaunas also has the quirky Devils Museum.  It claims to be the only museum in the world dedicated solely to the topic.  The collection was started by an artist who accumulated about 260 devil sculptures from around the world during his lifetime.  After his death, a memorial exhibition was set up in his former house and opened to visitors.  Over the years, the collection has grown to over 3,000 items including statues, masks, paintings and paraphernalia such as tobacco pipes.

It’s very sensibly structured, with information about how the devil is depicted in different cultures.  And we can now confirm at least half of the old saying that ‘in heaven they have harps, in hell they have piano accordians’. 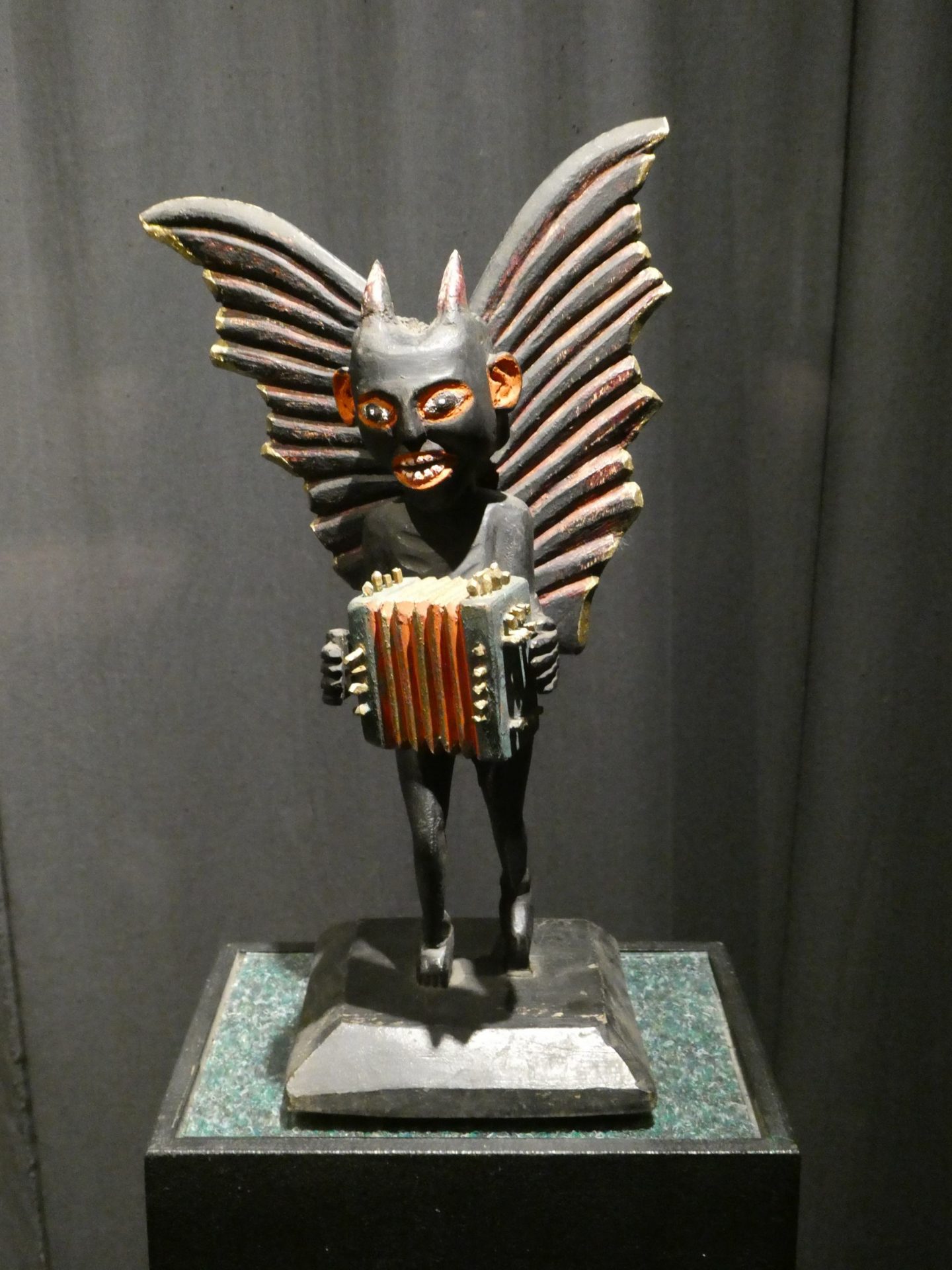 On a more serious note, outside town is the Ninth Fort.  Built in the late 19th century, it was used by the Nazis as a prison and place of execution during WWII and then as a Soviet prison after the war. 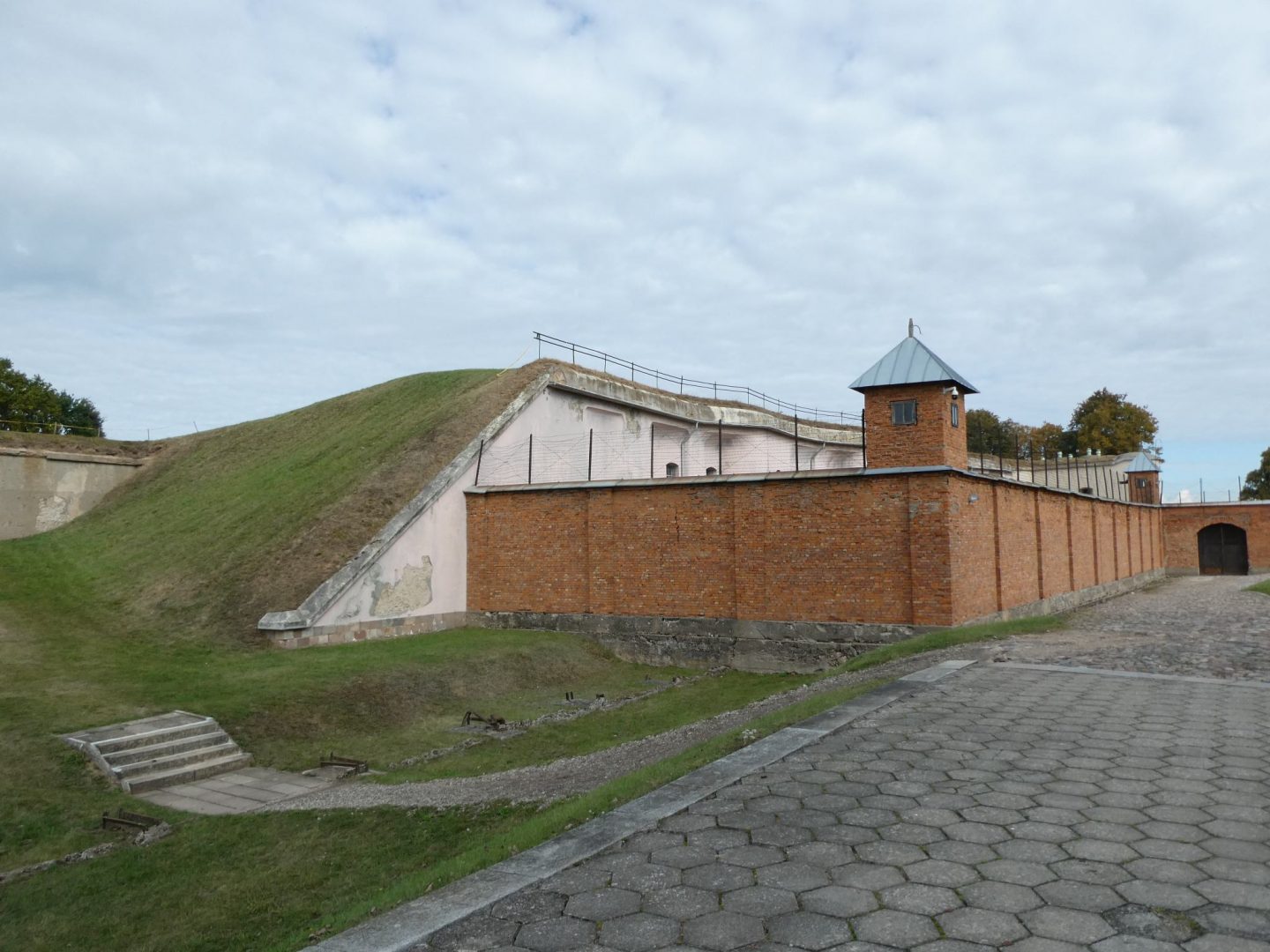 After over-running Kaunas in mid 1941, the Germans incited pogroms in which many Jewish residents were killed.  The remainder were forced to live in a ghetto.  But on 29 October 1941, the Jews were ordered to assemble.  9,200 of them were marched out of the city and massacred in a field outside the fort: 2,007 men, 2,920 women and 4,273 children.

Over the following months, almost all of the remaining ghetto residents met the same fate, as did many Jews transported to the fort from other occupied lands.   In total, the land abutting the fort became a mass grave for between 45,000 and 50,000 Jewish people.

In 1984 an enormous 32 metre high memorial was built on the site.  It’s difficult to stand in this serene, grassy field and contemplate the magnitude of the horrific events. 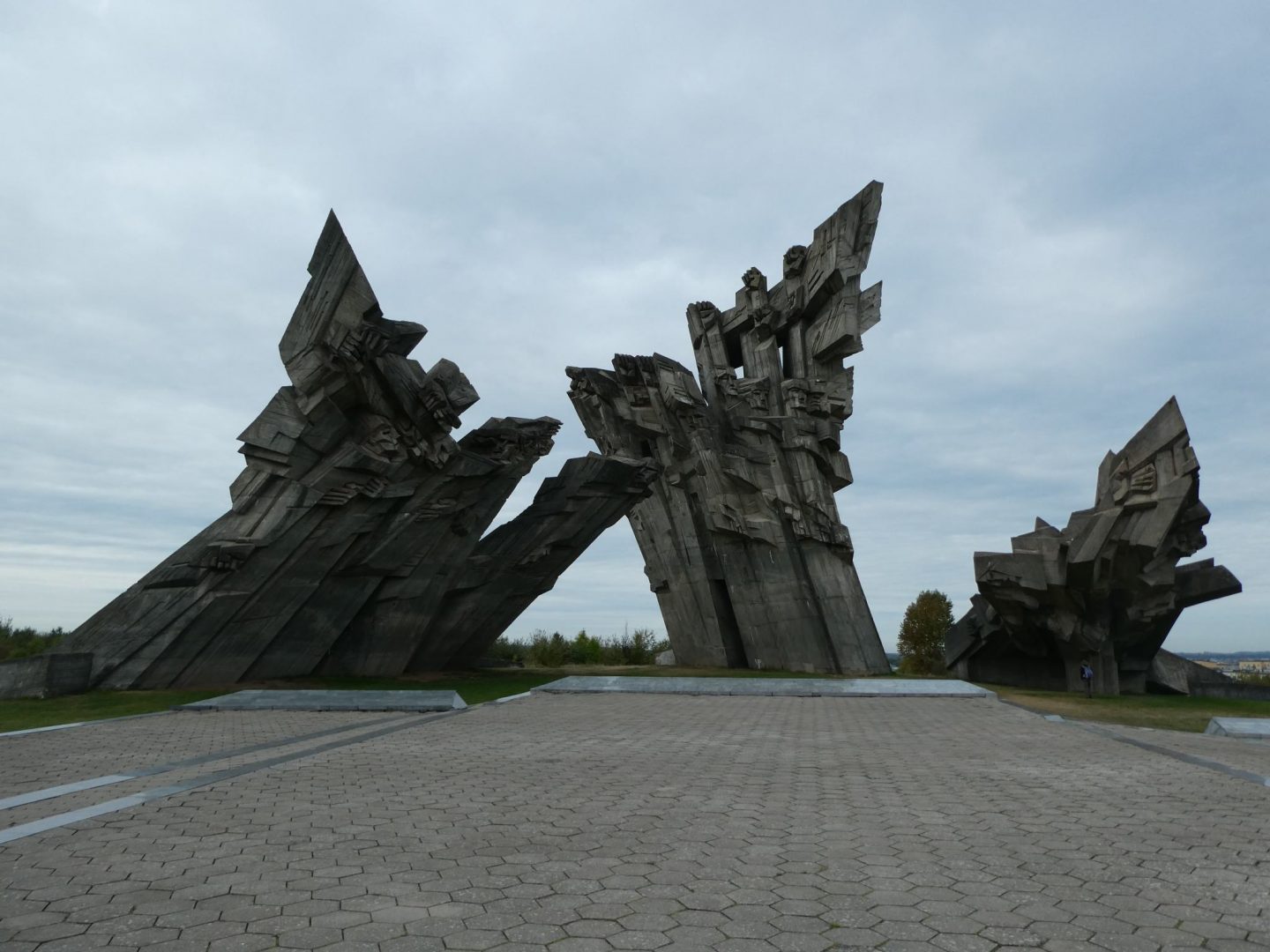 There are also memorial plaques for some of those who were transported here to die. 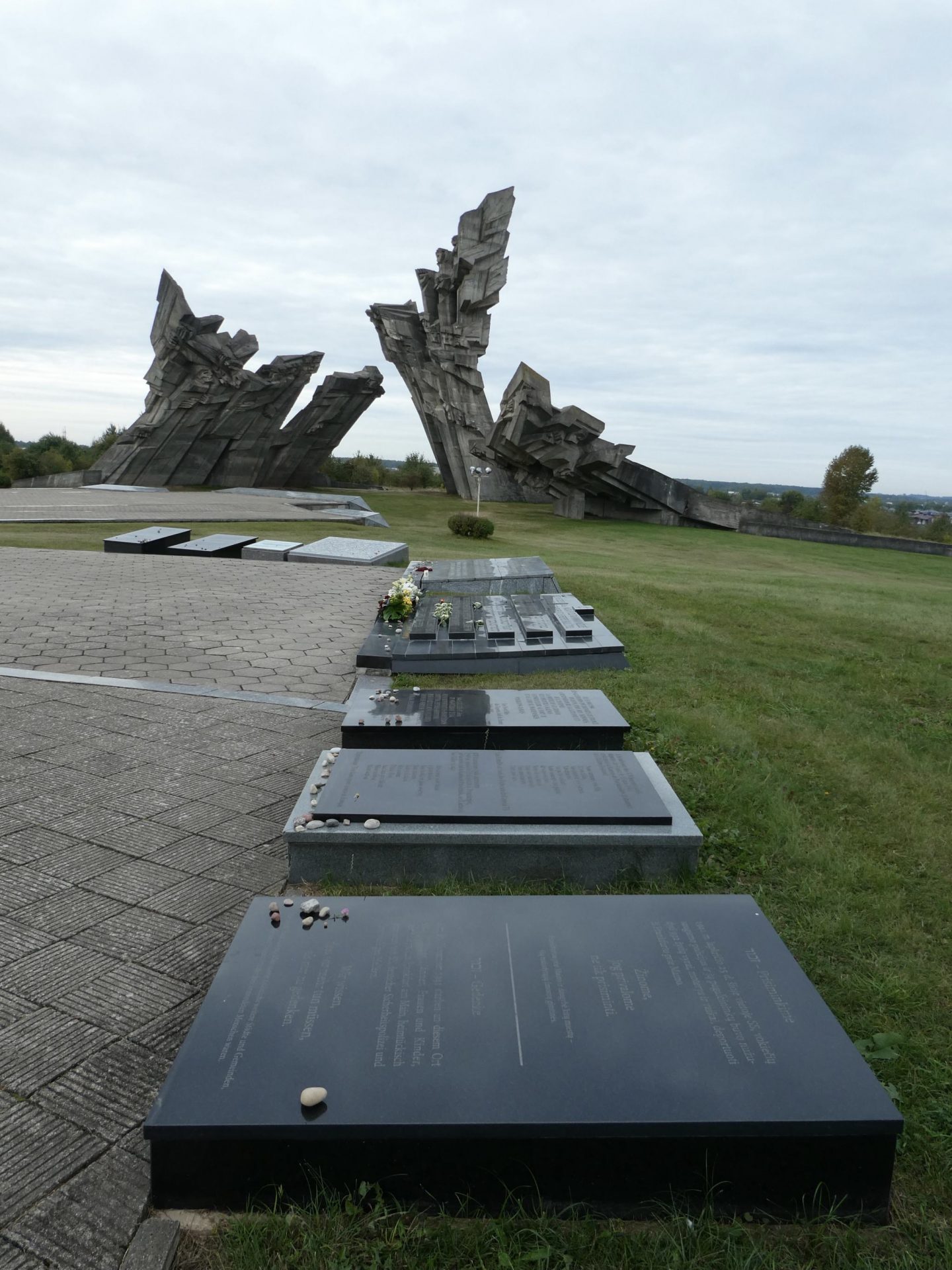 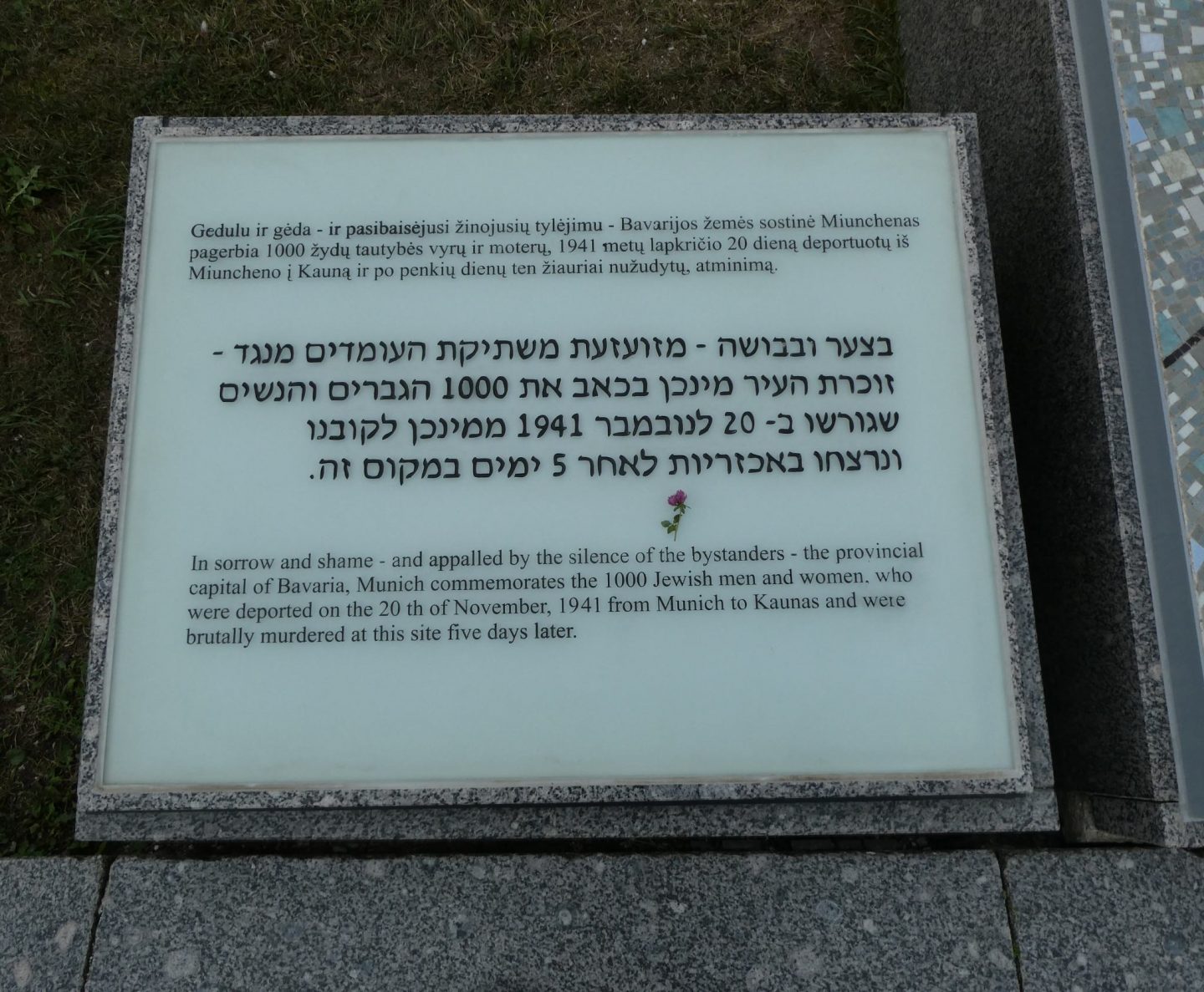 Inside the fort there are absorbing exhibitions on both the Nazi persecution and the appalling repression of the Stalin years.  Heavy going, but a history we should all know about.

Back in town is a tribute to Chiune Sugihara, Japan’s Vice Consul in Kaunas from 1939 to 1940.  Sugihara worked with Dutch Honorary Consul Jan Zwartendijk helping Jewish refugees fleeing east ahead of the Nazi advance.  Sigihara would issue a transit visa for Japan and Zwartendijk would issue a visa for Dutch Curacao as ‘final destination’.  Holding both, refugees could travel by train through Siberia and enter Japan with the transit visa.

Between 18 July and 4 September 1940 when Japan closed the consulate, Sugihara hand wrote visas for 18 to 20 hours per day.  He did so in breach of orders from above and fully aware that most of the recipients did not meet Japanese requirements for a transit visa.  A visa enabled the holder to take his family also.  It is estimated that between 4,500 and 6,000 Jewish lives were saved through the thousands of visas he issued.

When the consulate closed, Sugihara was assigned to East Prussia and then Romania.  When the Soviets arrived there, he and his family were interred in a POW camp for eighteen months.  When he was finally able to return to Japan, he was required to resign from the diplomatic service.  His wife always maintained it was because he had disobeyed orders and issued what came to be known as the ‘Sugihara visas’.

He was lauded as a hero in Israel and by those he helped, but only posthumously did Japan recognise the merits of his actions.  In Kaunas, a memorial composed of traditional Japanese origami cranes cast in bronze bears the words “he who saves a life, saves an entire world”. 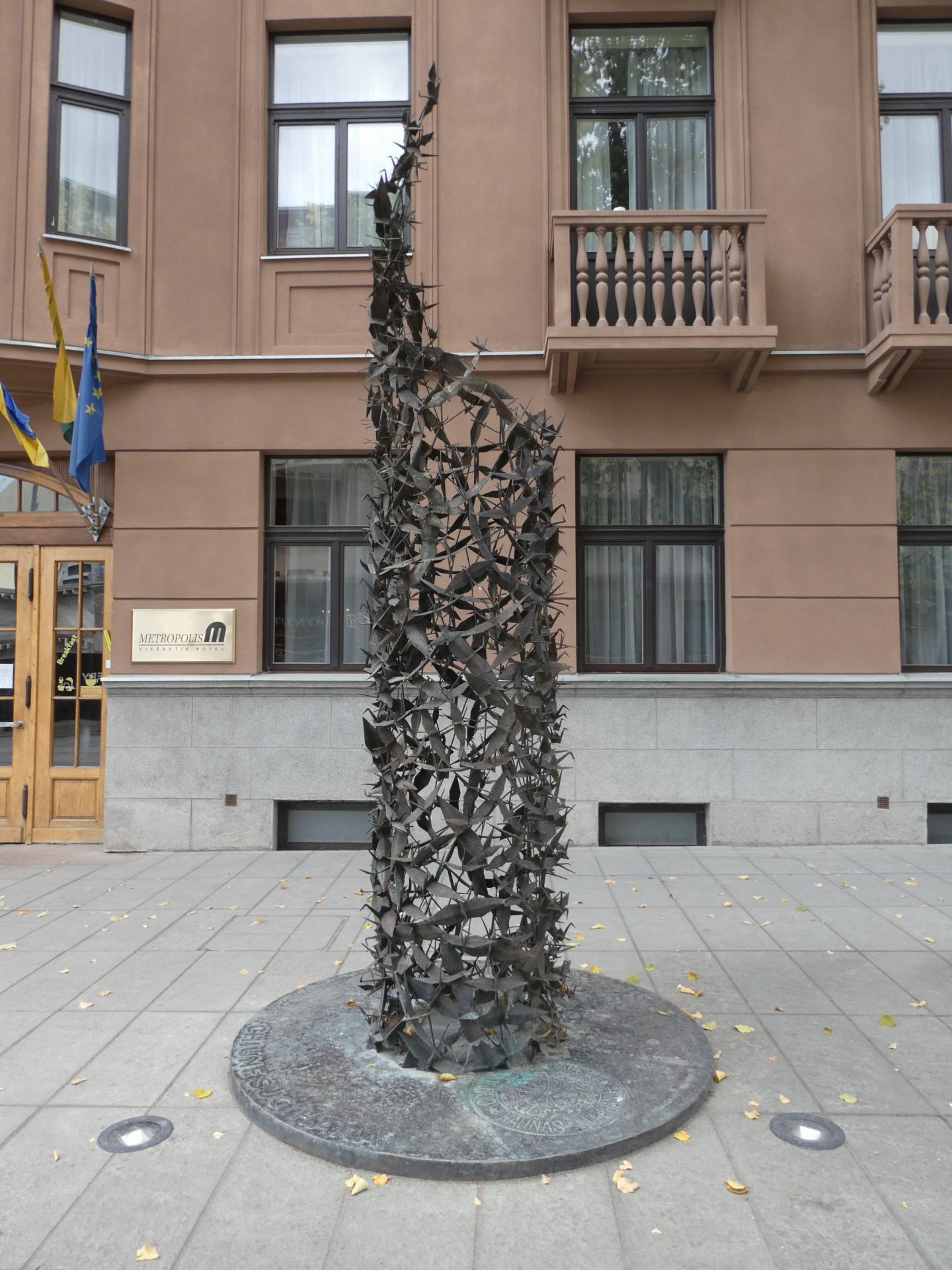 And lastly, the Hill of Crosses.  It’s not in Kaunas.  It’s nowhere near Kaunas.  In fact, it’s about three hours by a combination of bus and taxi from Kaunas.  Julie was keen to see it.  John wasn’t keen on an entire day on the bumpy buses just to see a hill of crosses.  But deep inside him beats a soft heart.  Having agreed we wouldn’t go, he woke Julie early on our last day in Kaunas and resignedly said ‘if we’re going, we need to go now’.   And we did.

It isn’t really even a hill.  More of an undulation in a field.  Covered in more than 100,000 crosses.  Some are old, some are as new as last week. 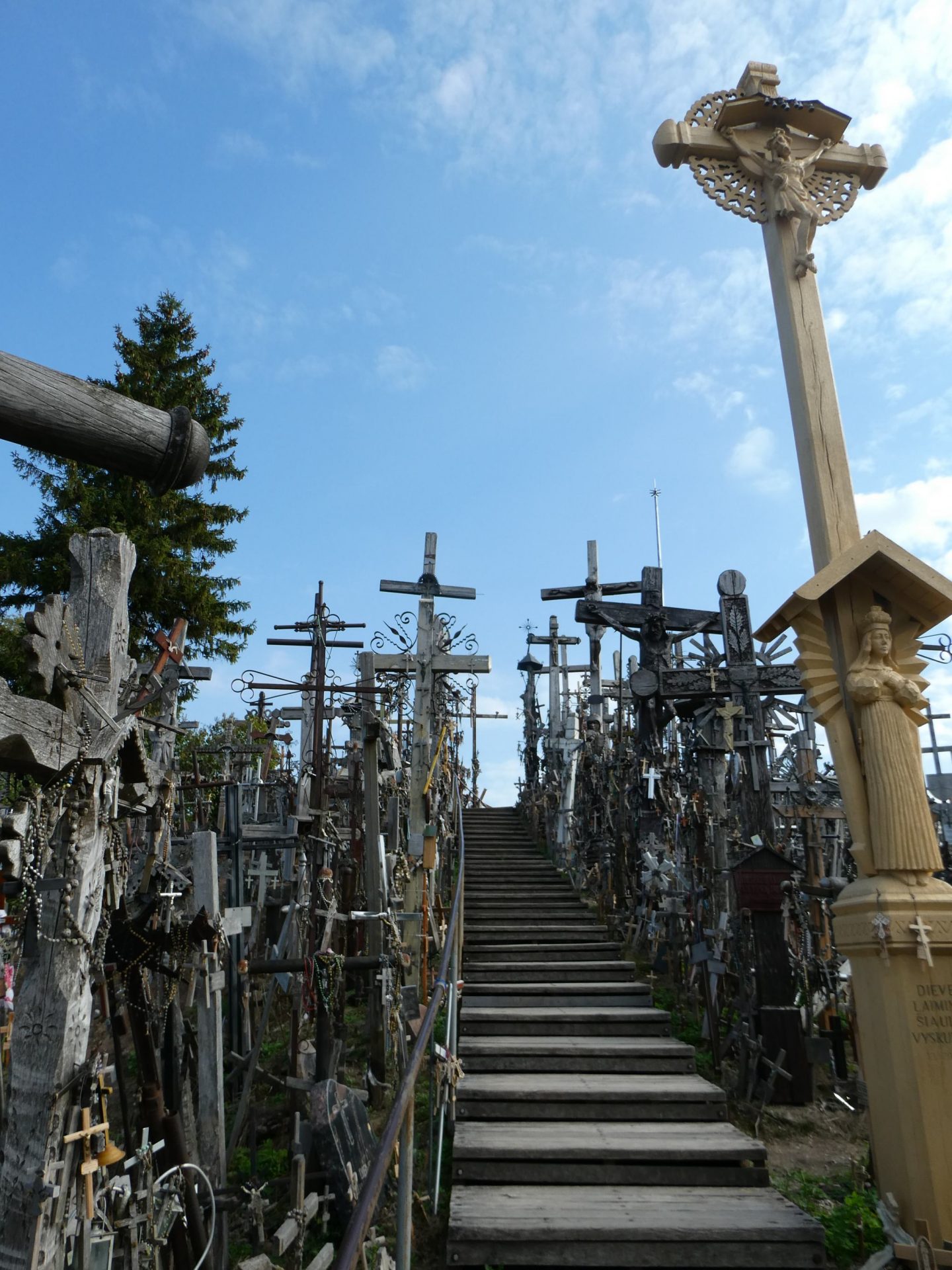 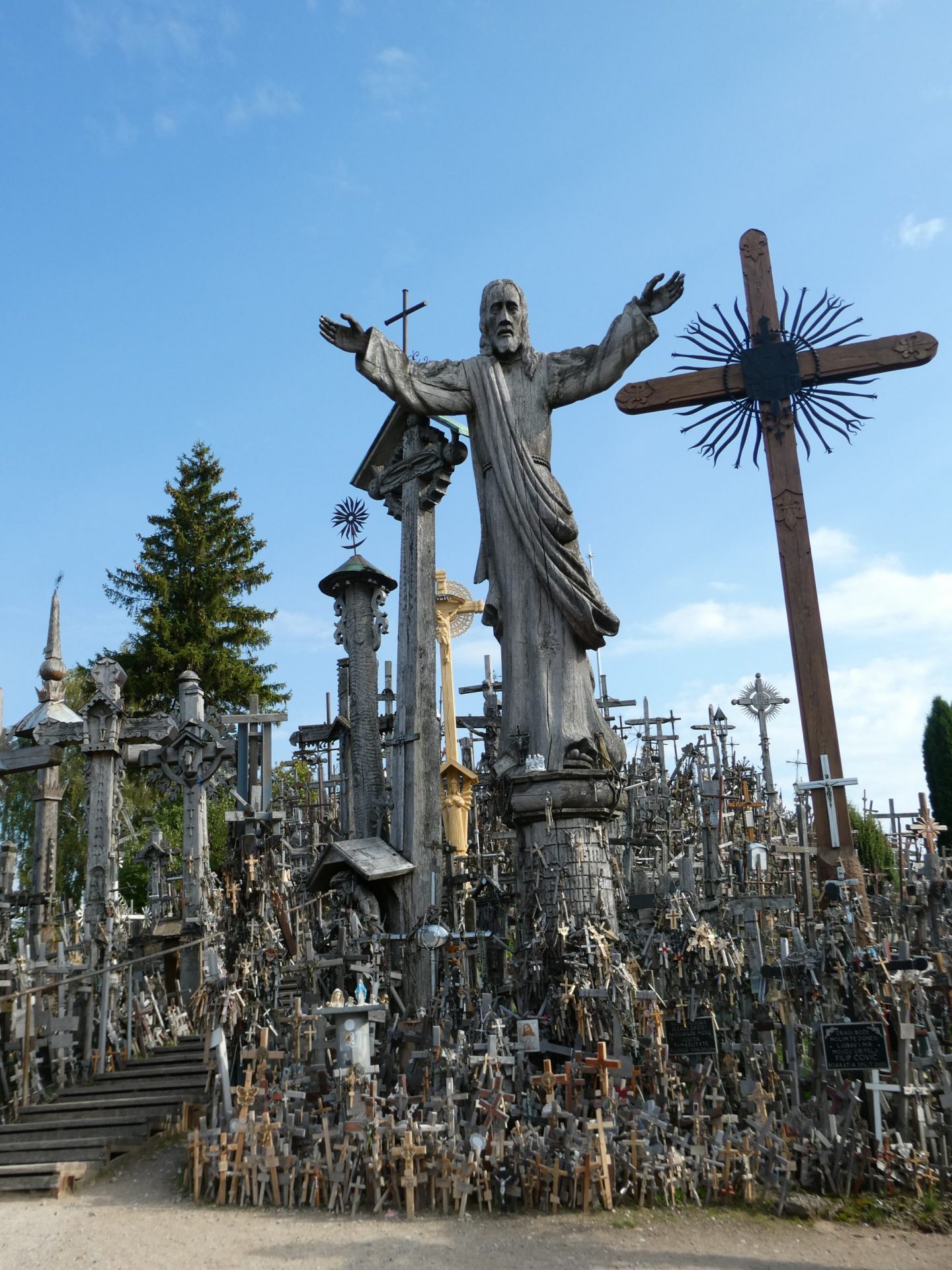 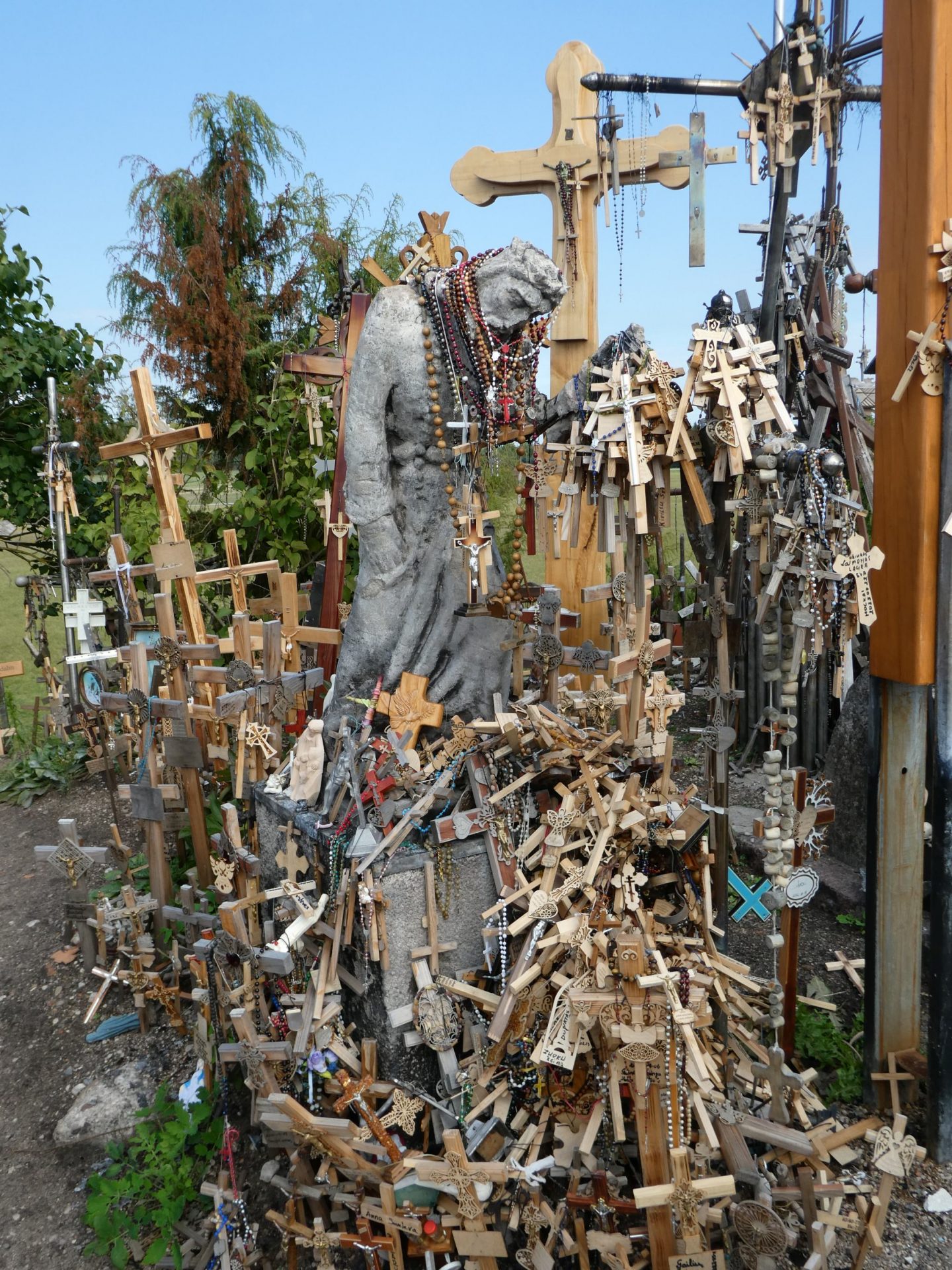 There’s an air base nearby and some have been placed by overseas squadrons who’ve been stationed here. 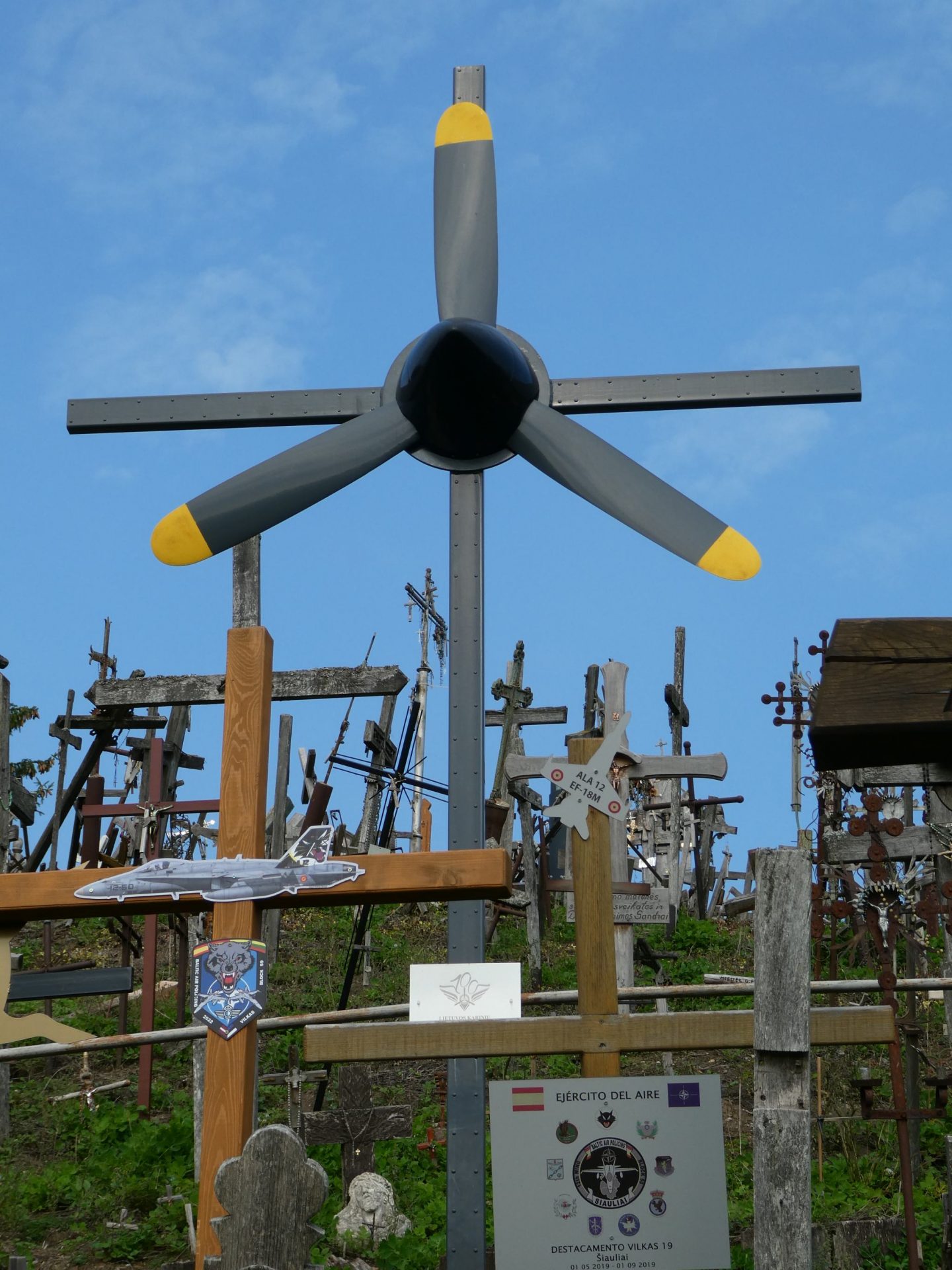 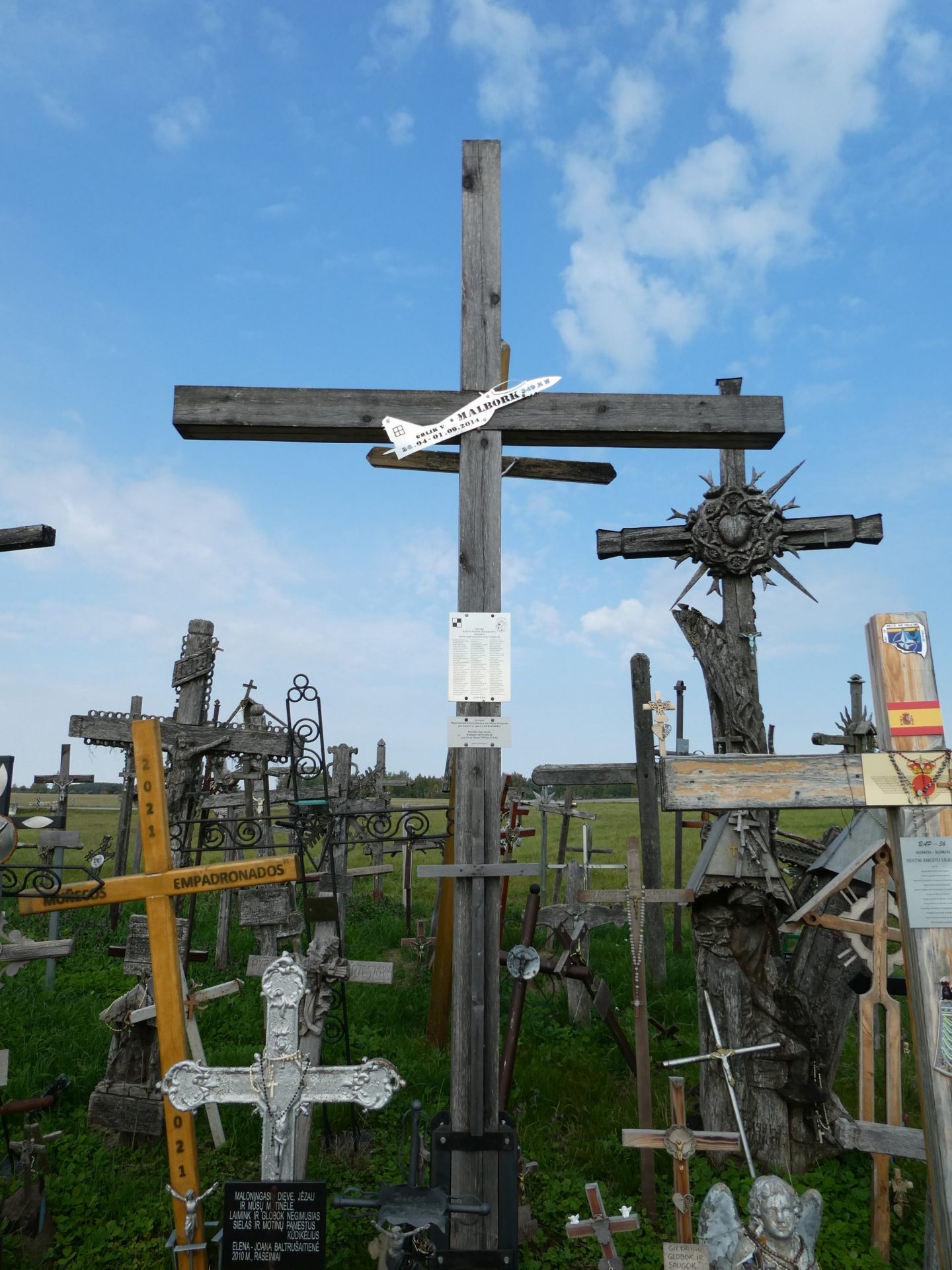 It isn’t so much the site itself but what it represents.  A symbol of resilience in the face of tragedy.  A determination to find a way to mourn when conventional ways are closed.  And a peaceful yet passive aggressive giving of the middle finger to forces bent on breaking the nation’s spirit.  That’s what makes it a special place.

It probably started after the November Uprising in 1831, a rebellion by young military officers from Poland, Lithuania, Belarus and part of Ukraine against the Russian Empire.  The uprising was brutally suppressed.  With no body to bury nor a grave at which to mourn, Lithuanian mothers of dead soldiers placed crosses on this hill outside the town of Siauliai.

Over the decades it became a place of pilgrimage for Catholics.  More crosses, crucifixes, rosaries and religious statues were placed there.  During Lithuania’s brief period of independence between the two world wars, it came to be a place where the devout would come to pray for peace.

And this is the part we like best.  In the Soviet era, visiting the site was banned.  Yet new crosses would appear overnight as defiant Lithuanians snuck out under cover of darkness and planted more.  At least twice the Soviets bulldozed the site.  Each time, it rose again.  A regime that controlled more than 290 million people across 15 republics with an iron fist couldn’t stop a bunch of (mostly) women determined to honour their dead and practice their faith.

Whatever you think about religion, you have to admire their spirit.