According to folk history, in 1320 Lithuanian Grand Duke Gediminas was sleeping in the sacred forest near the confluence of the Vilnius and Neris Rivers after a successful hunt.  He dreamed of an enormous iron wolf standing on a hill ‘howling as strong and loud as a hundred wolves’.  Next day he asked the local pagan priest to interpret the dream.  The priest reckoned the iron wolf represented a castle and a city to be built on the hill where Gediminas had the dream and which would become the capital of Lithuanian lands.

Obeying the will of the gods, in 1320 the duke built Vilnius. It did indeed become the capital.  Never mind that there’s archeological evidence of settlement here going back much earlier.  It’s a good story and it explains the big statue in Cathedral Square of the duke standing on a plinth carved with a howling wolf. 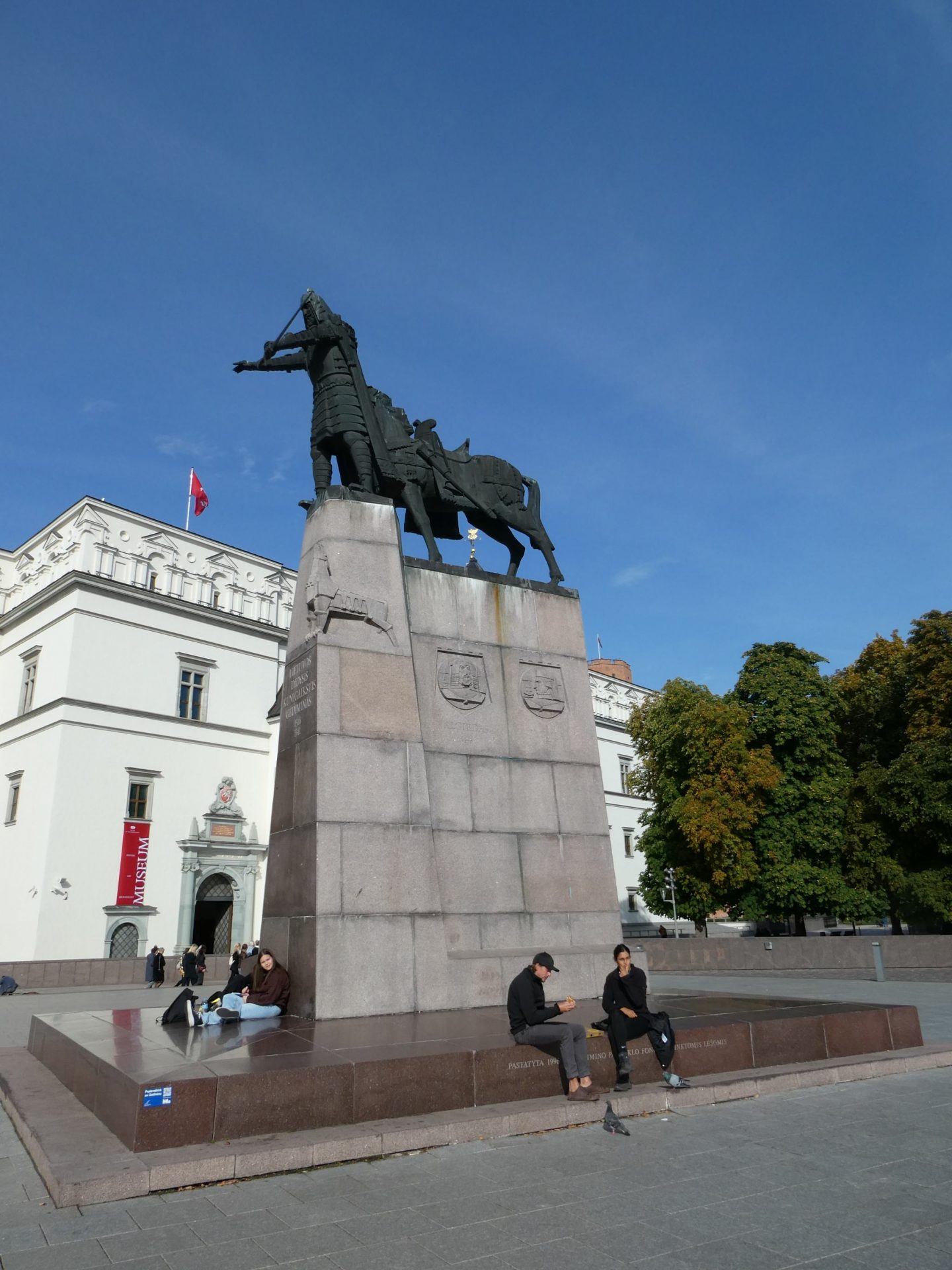 The duke fortified the city with a castle and defensive walls. What’s left of it today is the remnant of fortifications added by his grandson, Grand Duke Vytautas  in the 15th century.  There’s a museum inside but the best aspect of visiting the tower is the view from the top. 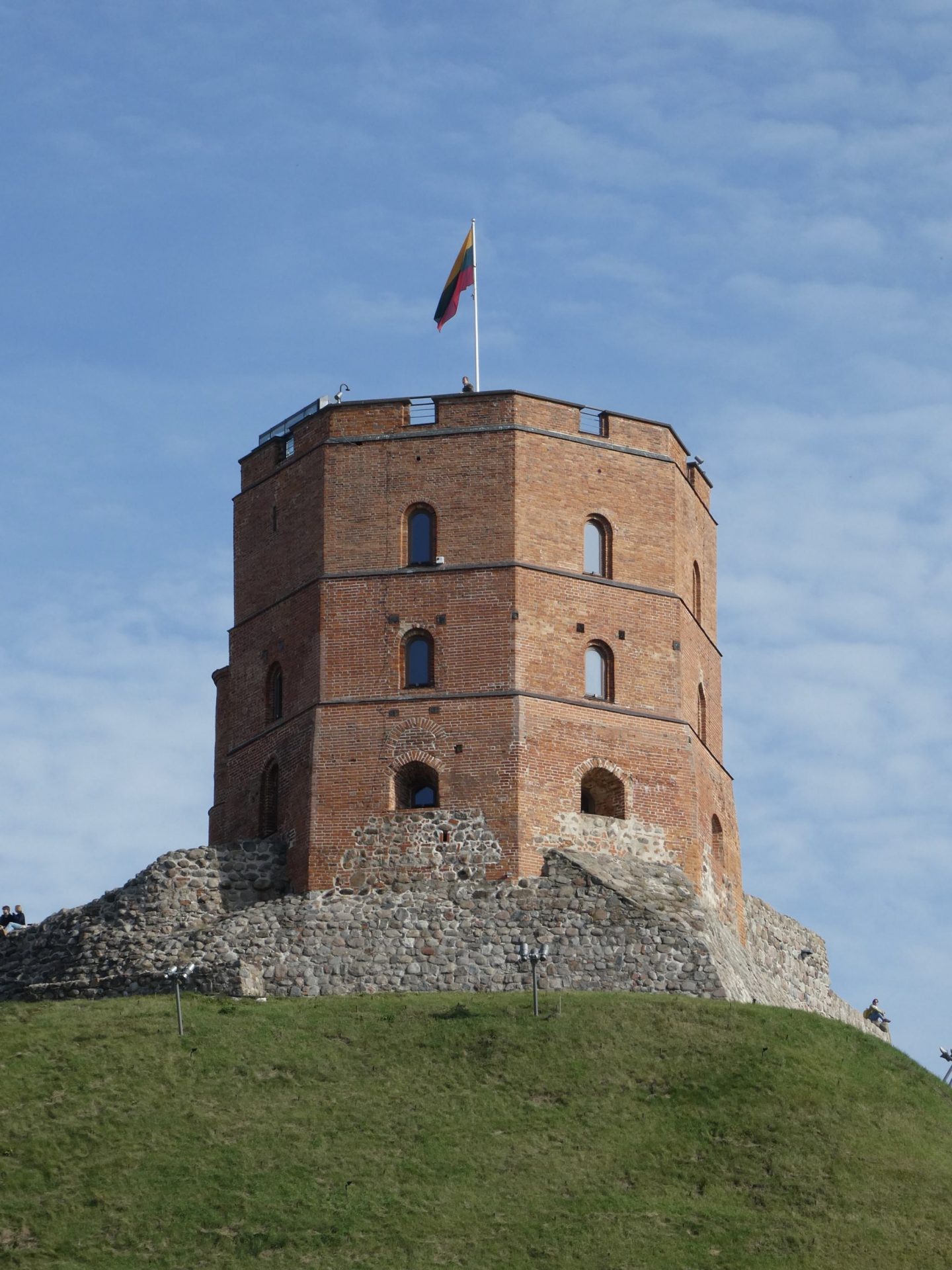 A succession of Grand Dukes of Lithuania were crowned in the Cathedral Basilica of St Stanislaus and St Ladislaus at the bottom of Gediminas Hill. 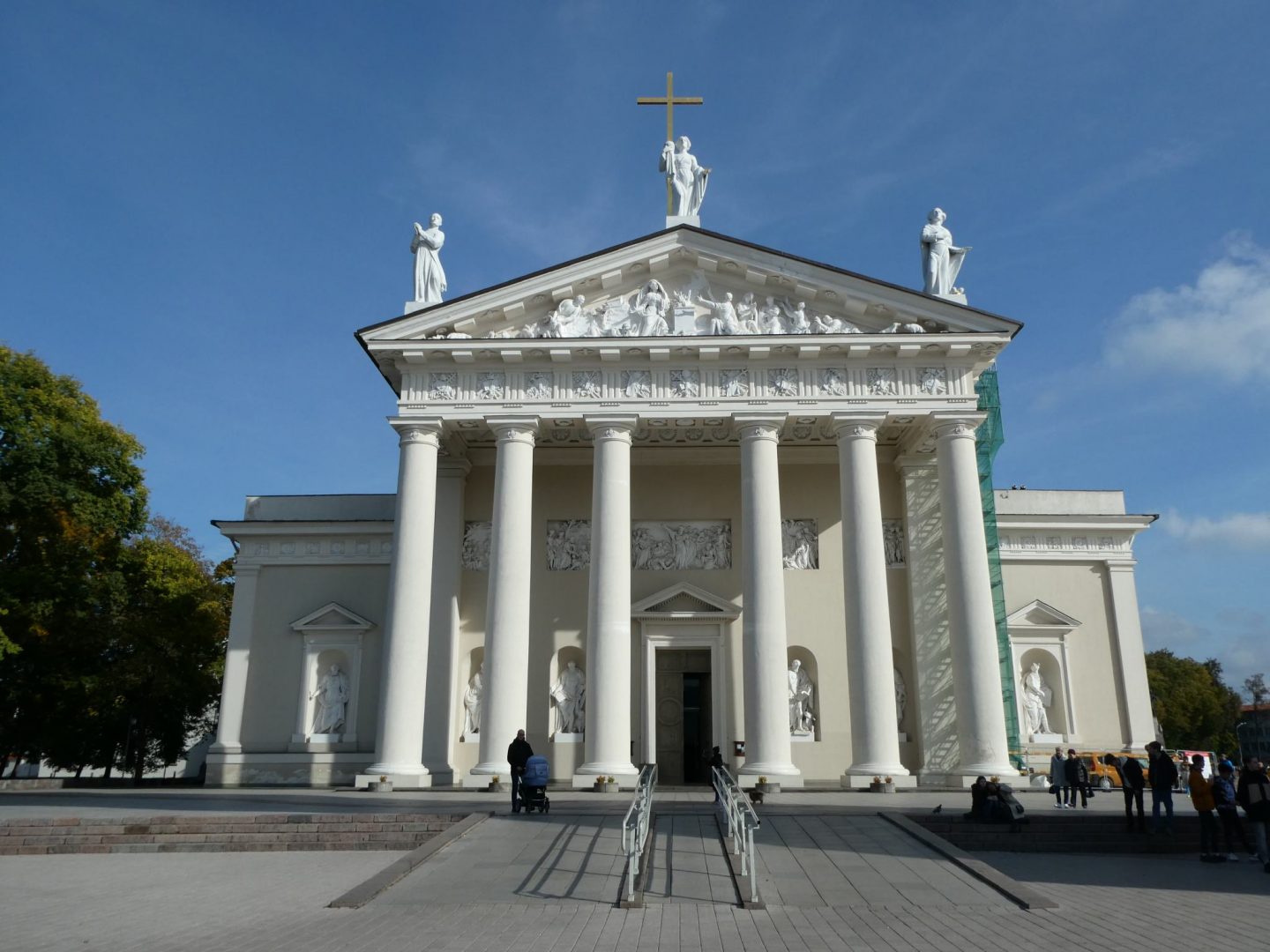 And of course there’s a piece of St Stanislaus’ forearm preserved as a relic here for the veneration of the faithful. 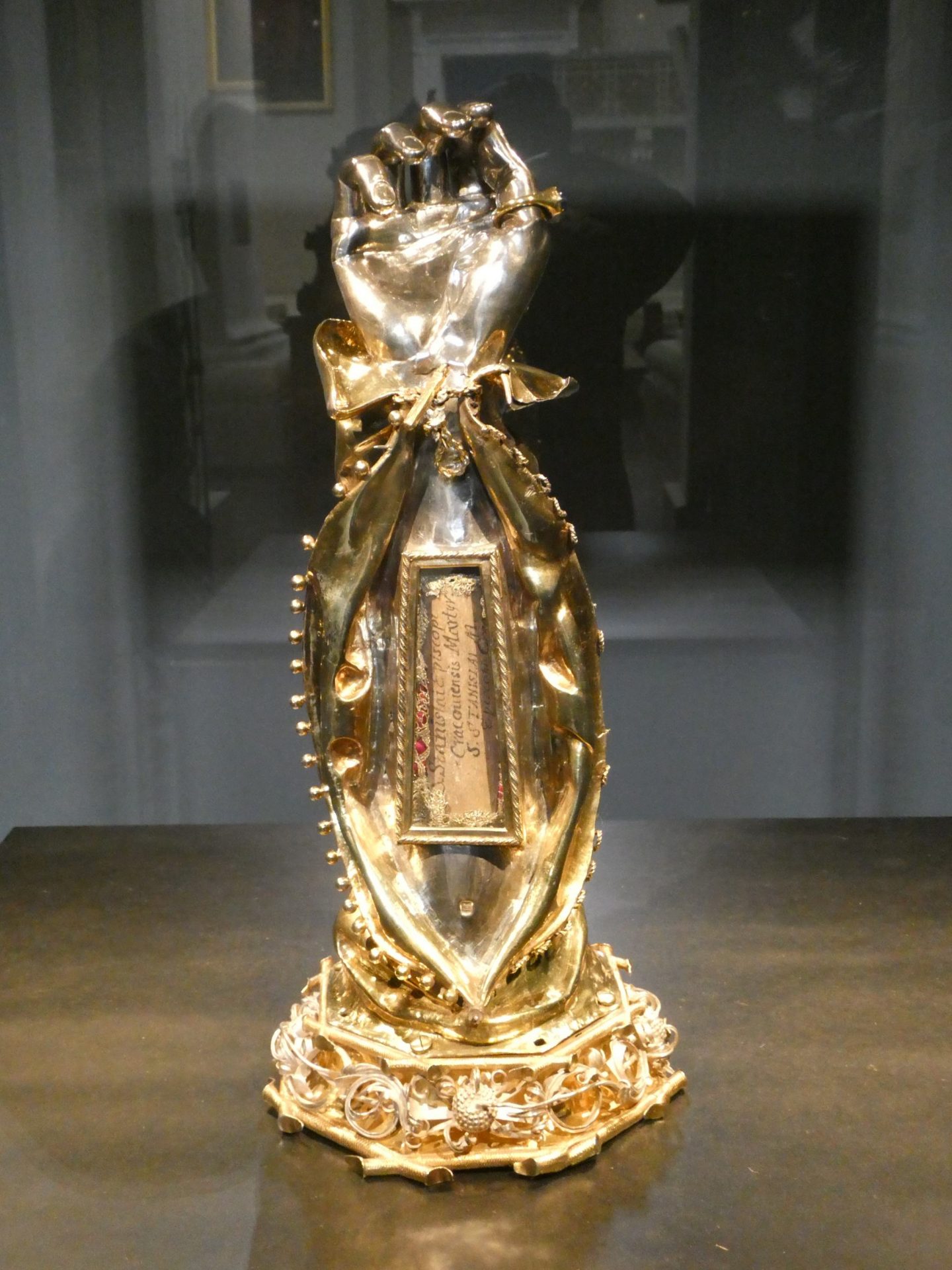 For 3oo years, the Grand Dukes lived next door in the Palace built in 15th century.  It was demolished in 1801 but a replacement has been built in Renaissance style to match the cathedral.  Construction of the intricate complex took 16 years beginning in 2002 and includes reconstruction of the ceremonial halls of the Grand Duchy and a comprehensive history museum. 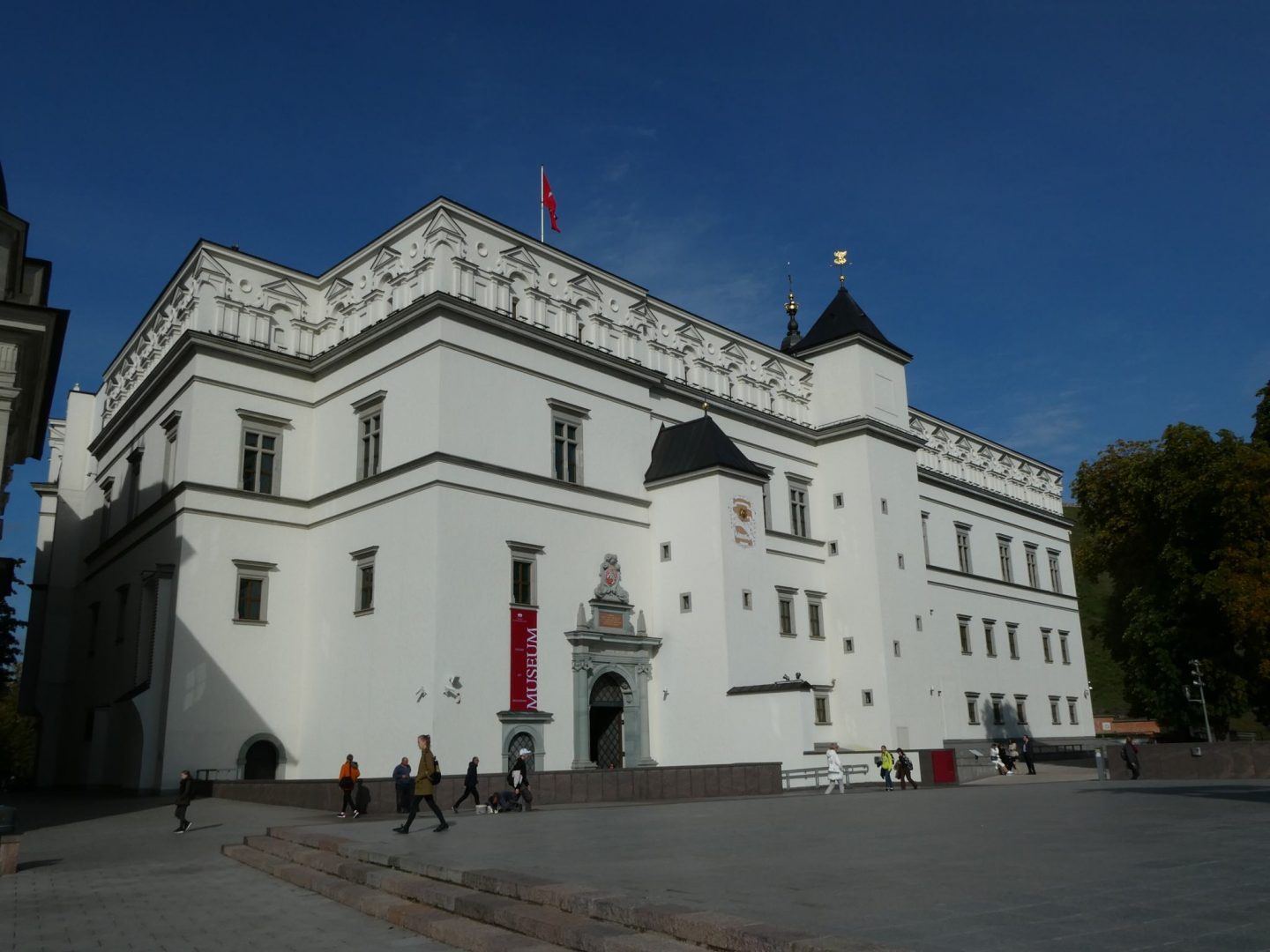 Gediminas also built a castle at Trakai, on the shores of Lake Galve, 30km from Vilnius.  In about 1400, grandson, Vytautus went even further, building a new castle on one of the 21 islands in the lake.  The red brick Gothic castle has had substantial restorations and a bridge joins it to the lake’s edge.  It’s now one of the most visited places in Lithuania. 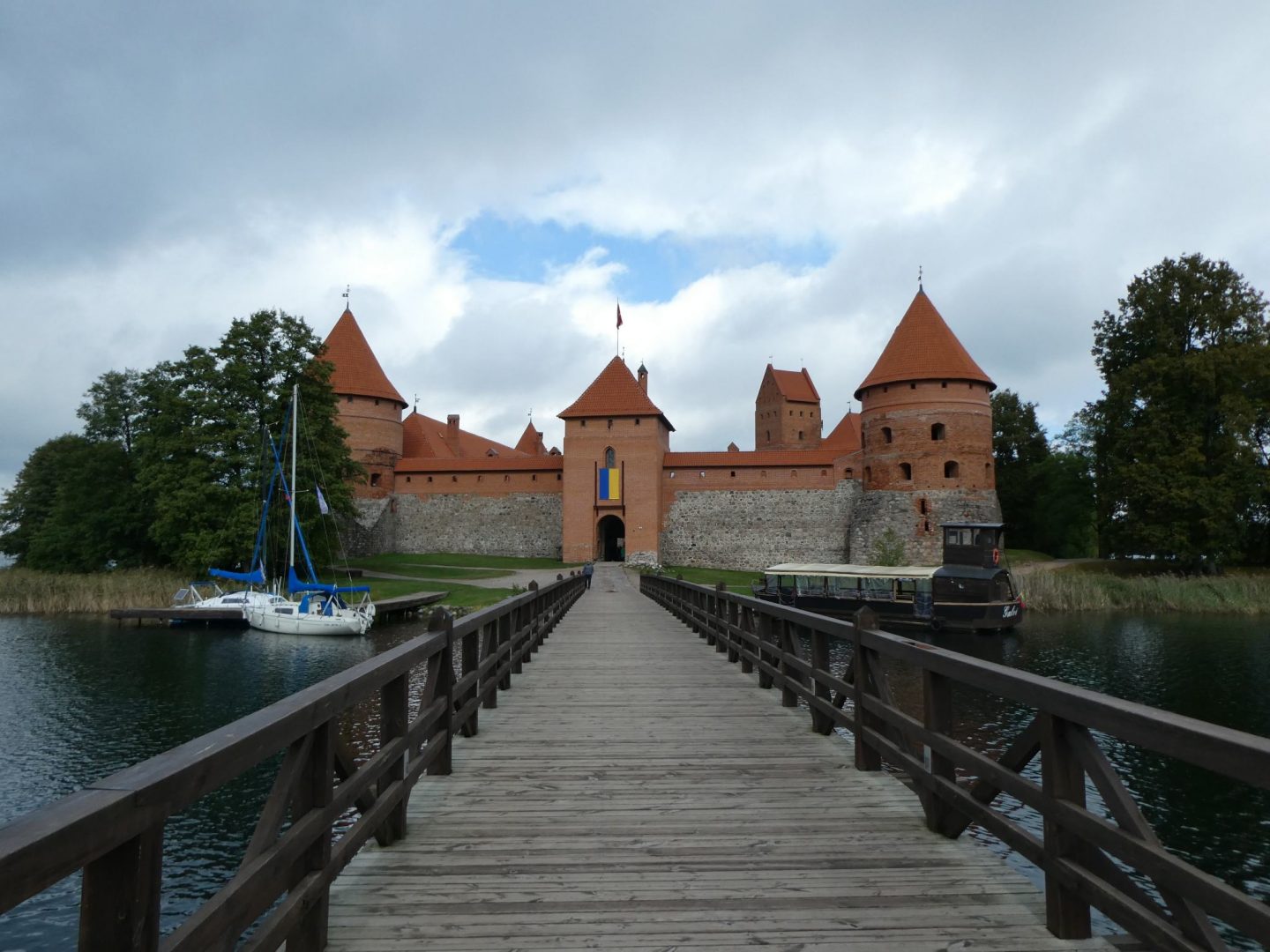 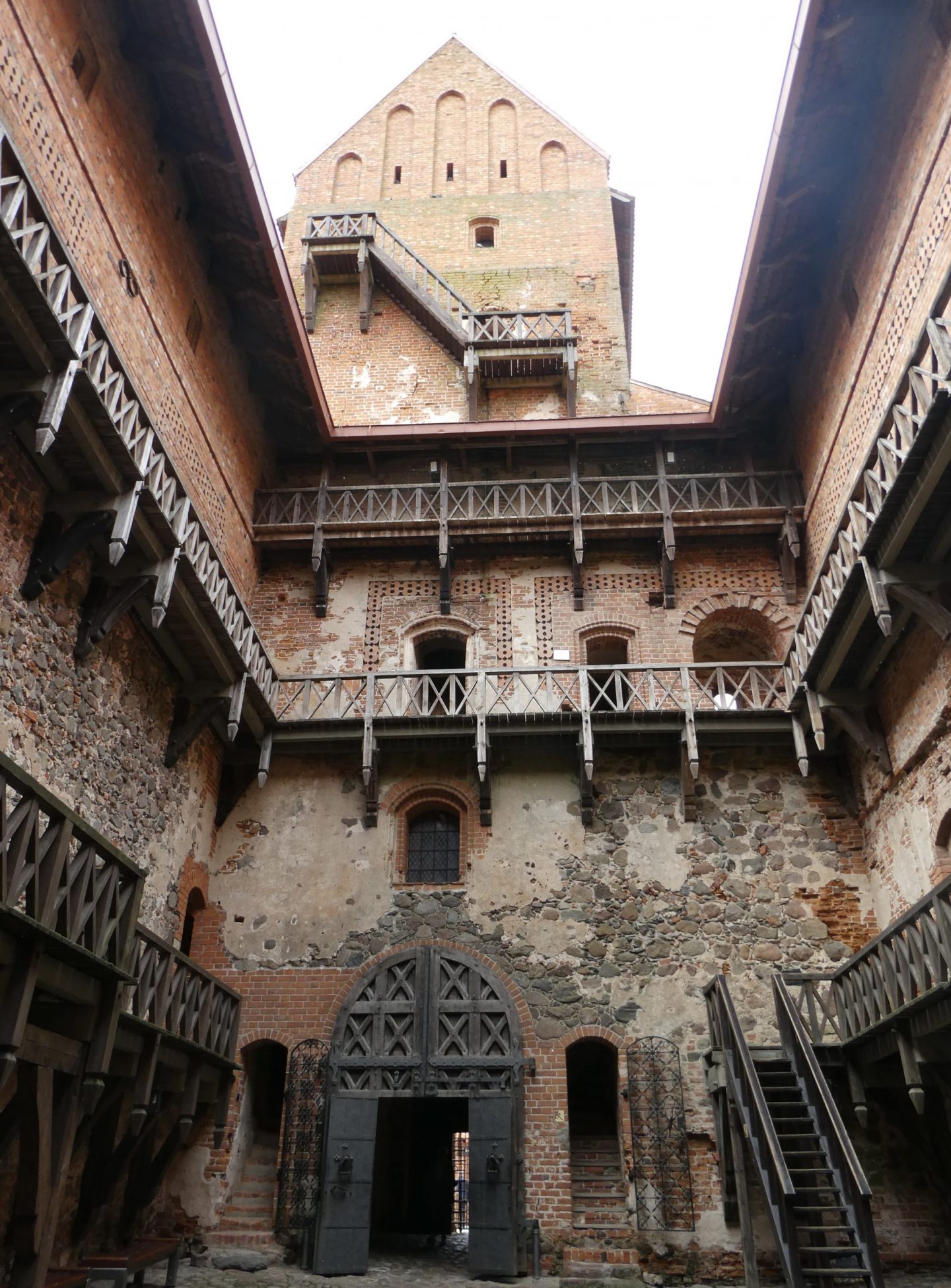 Vilnius flourished in the 1600s.  The university and an open migration policy meant it developed into one of the most important scientific and cultural centres in the region.  Despite the ravages of war over the next few hundred years, its historic centre has an intact array of Gothic, Renaissance, Baroque and classical buildings.  The Old Town is one of the largest surviving medieval old towns in Northern Europe, which earned it UNESCO World Heritage listing in 1994. 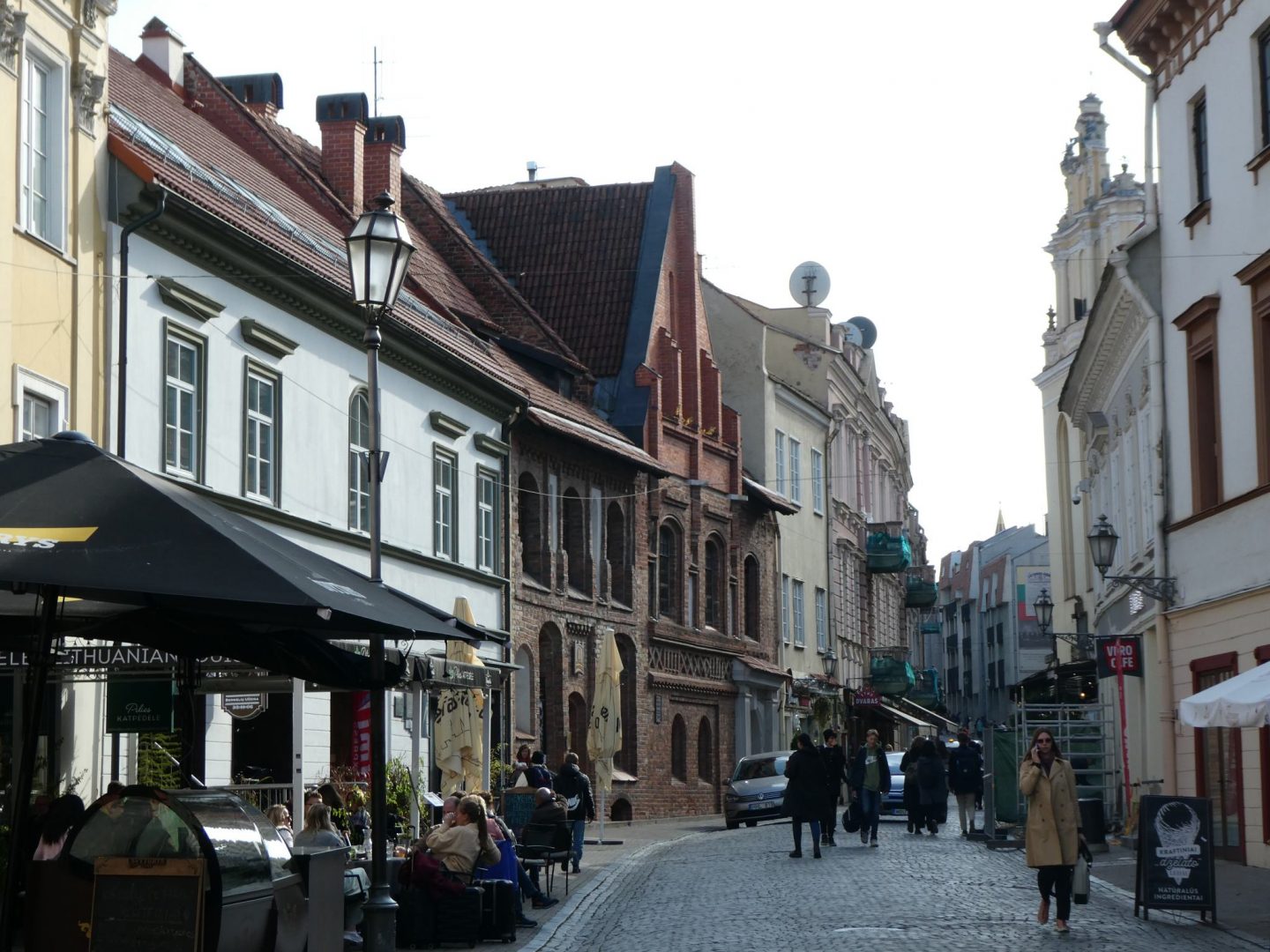 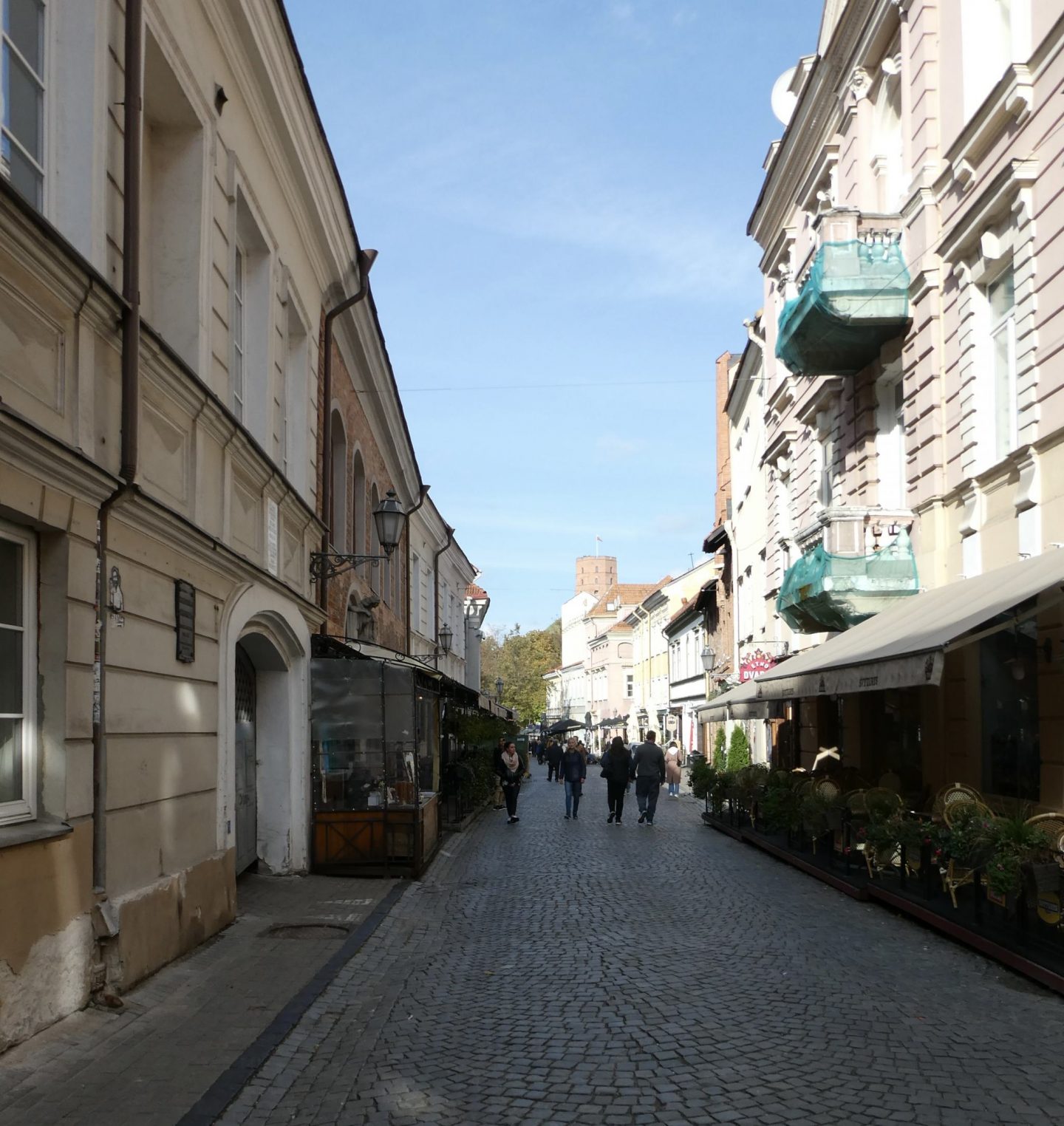 For a centre of its size, there are a remarkable number of historic churches in different architectural styles. 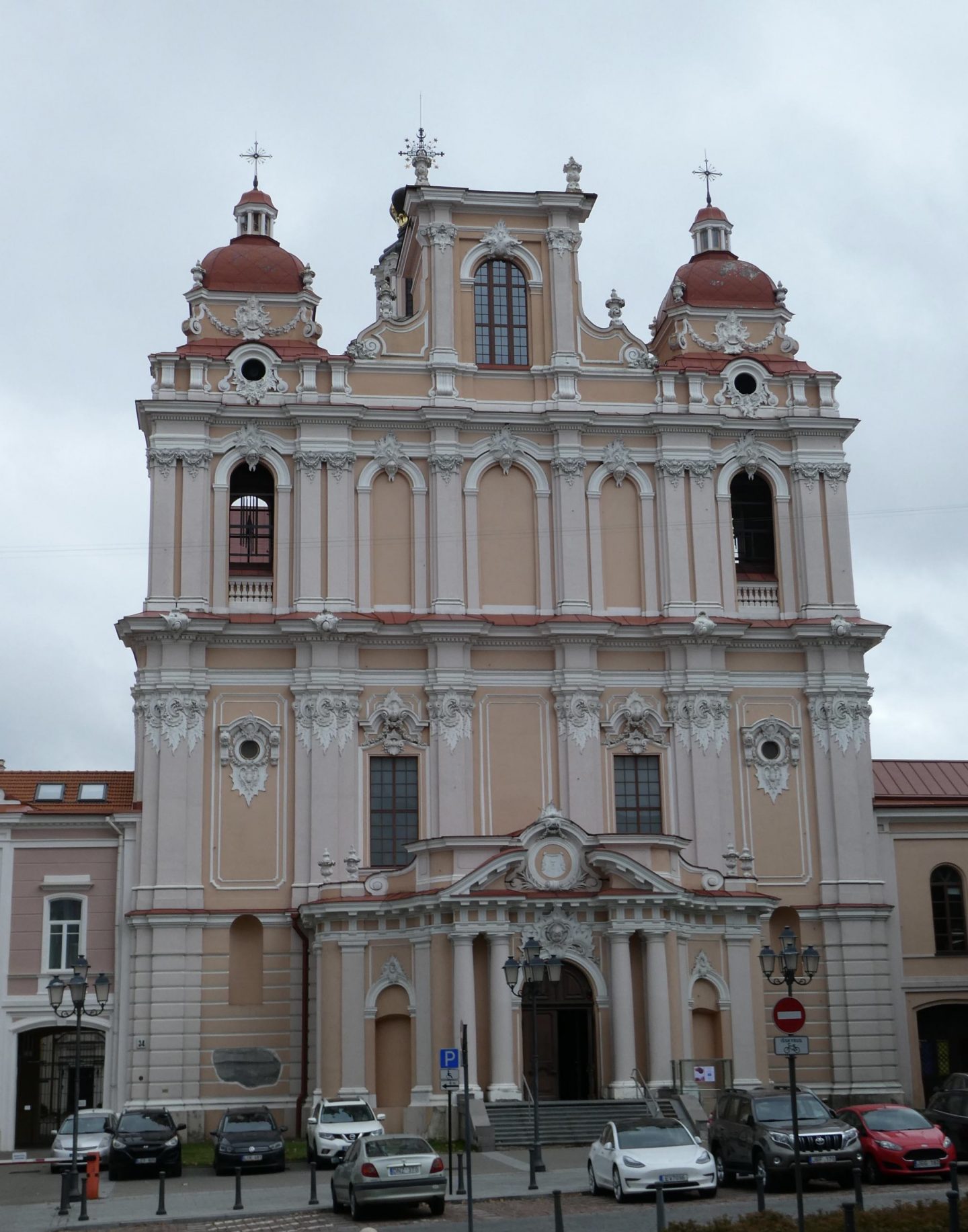 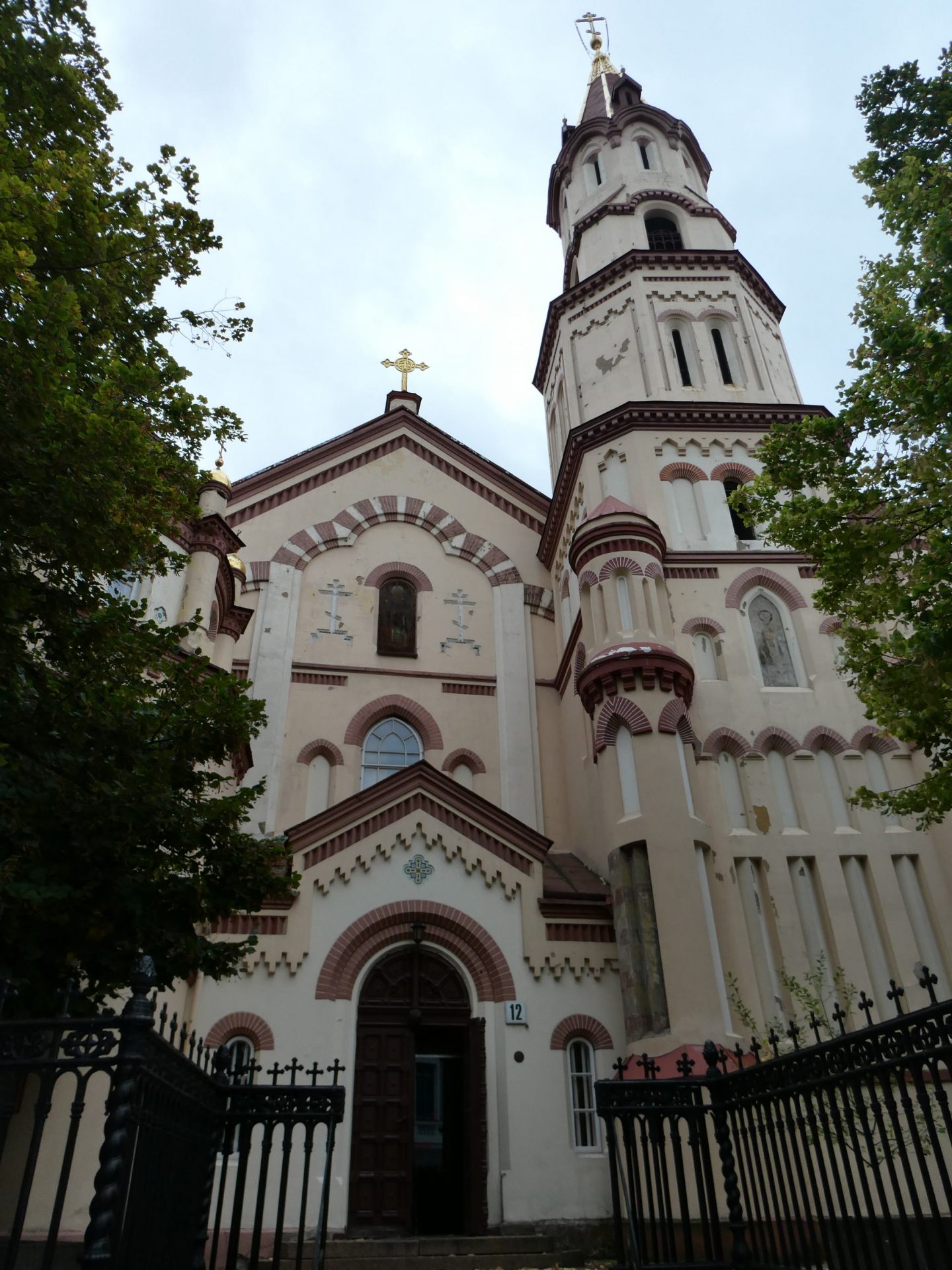 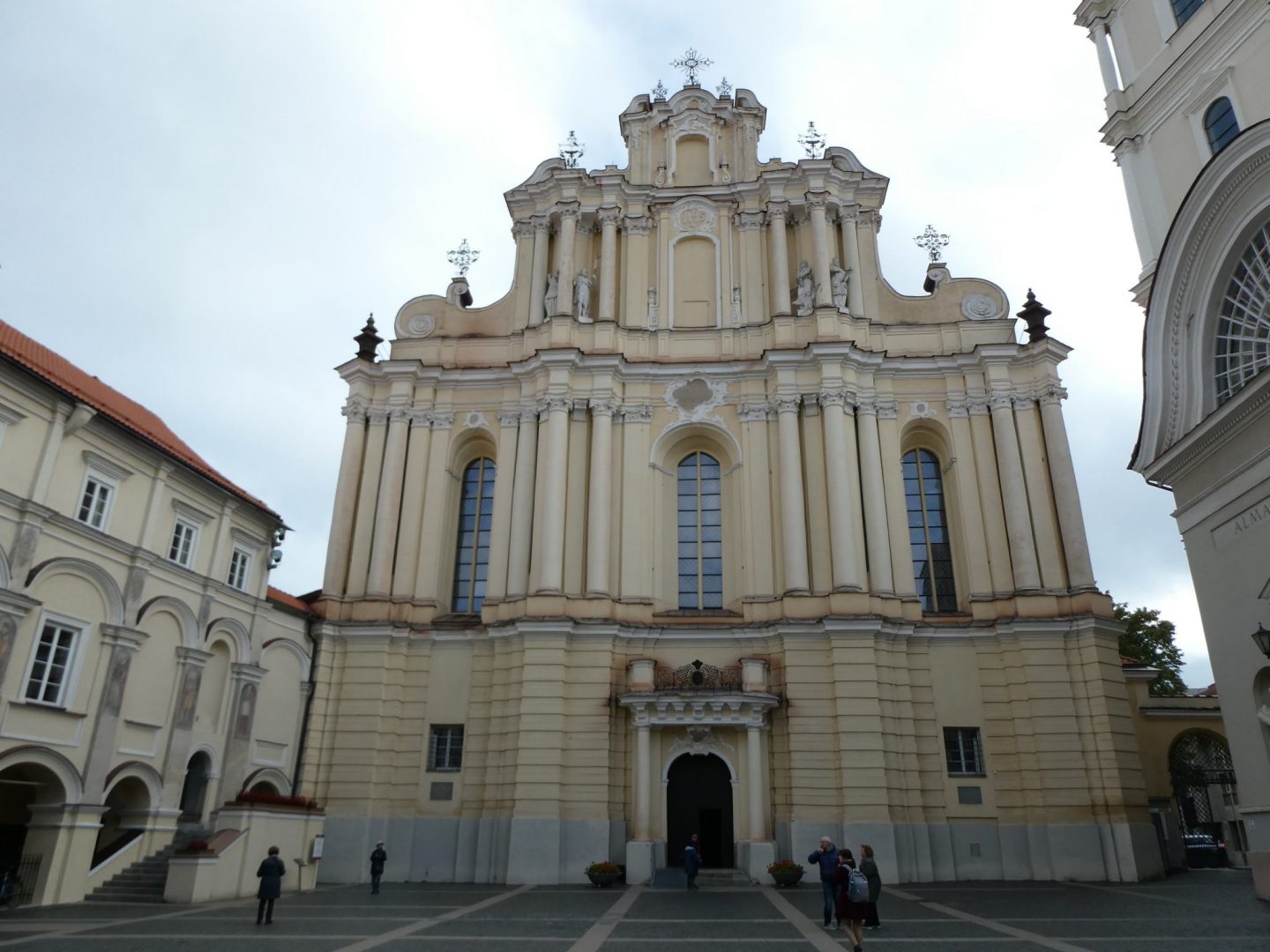 In the 16th century defensive walls were built around the city and it was common practice to include niches in the gates and walls to house religious artefacts in the belief they would ward off attacks.   In due course, a 17th century icon of the Blessed Virgin Mary was installed in a chapel above the gate.  The icon is accredited with no less than 17 miracles, including causing the iron gates to crush four Swedish soldiers during an attack on the city in 1702.  It’s the only one of the five original city gates still standing, so who knows – maybe the icon does have protective powers.  It has become a major pilgrimage site for Catholics, especially from Poland. 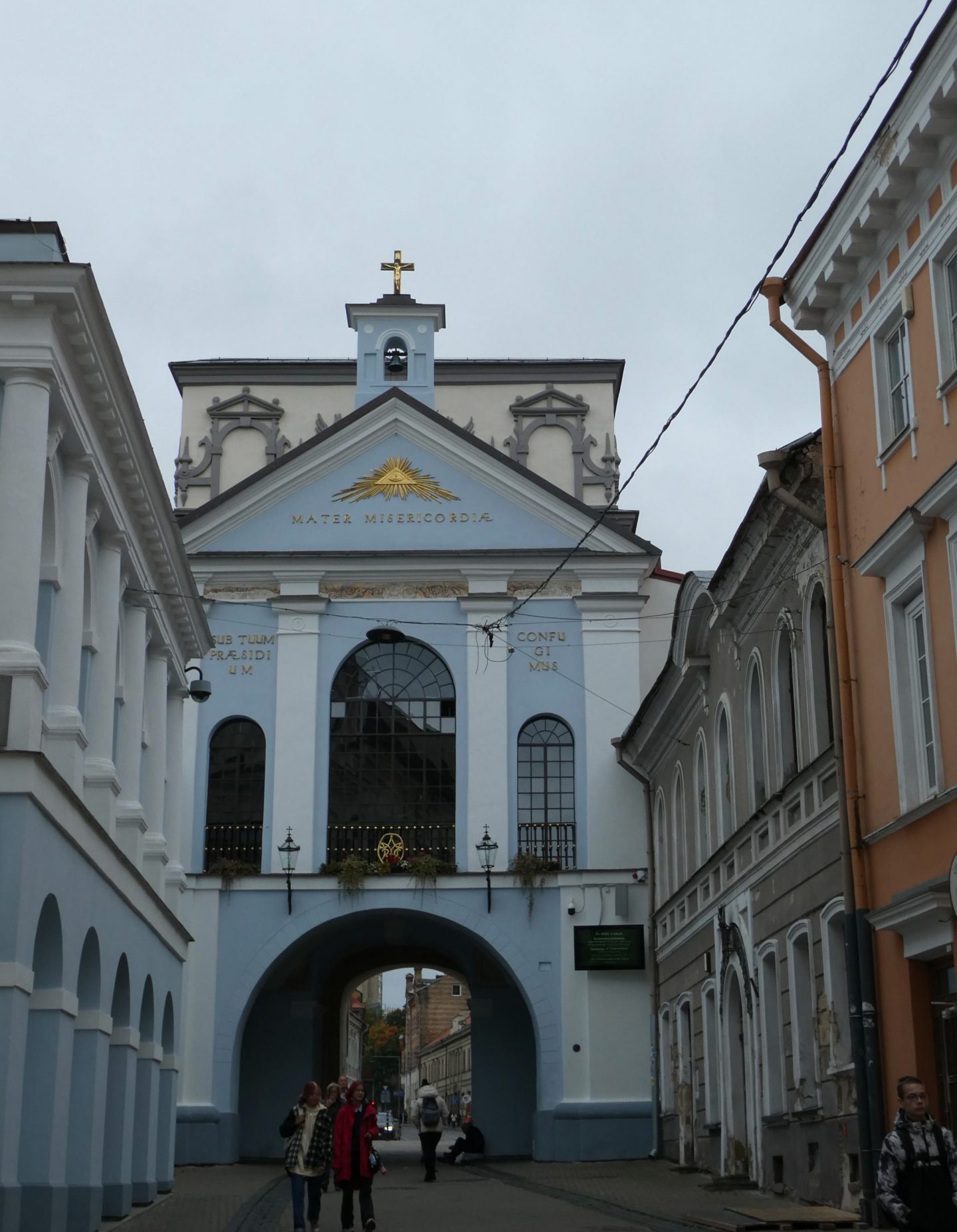 The suburb of Uzupis, which literally means ‘beyond the river’, is a bohemian neighbourhood in the historic centre of Vilnius.  About 1,000 of its 7,000 residents are artists.  In 1997, locals declared the Republic of Uzupis with its own flag, currency, constitution and president.  It’s all tongue in cheek but quite fun.

A copy of the constitution in 23 different languages can be found fixed along a fence.  Here’s the English one.  Most of them sound like reasonable rules for a good life.  We’re not sure about the enforceability of Article 13: A cat is not obliged to love its owner but must help in time of need.

The Republic has granted honorary citizenship to those it considers worthy, including the Dalai Lama who visited in 2013.  He returned in 2018 and planted a tree in ‘Tibet Square’ where a board records some of his words of advice in several languages.  We rather liked ‘if you think you are too small to make a difference, try sleeping with a mosquito’. 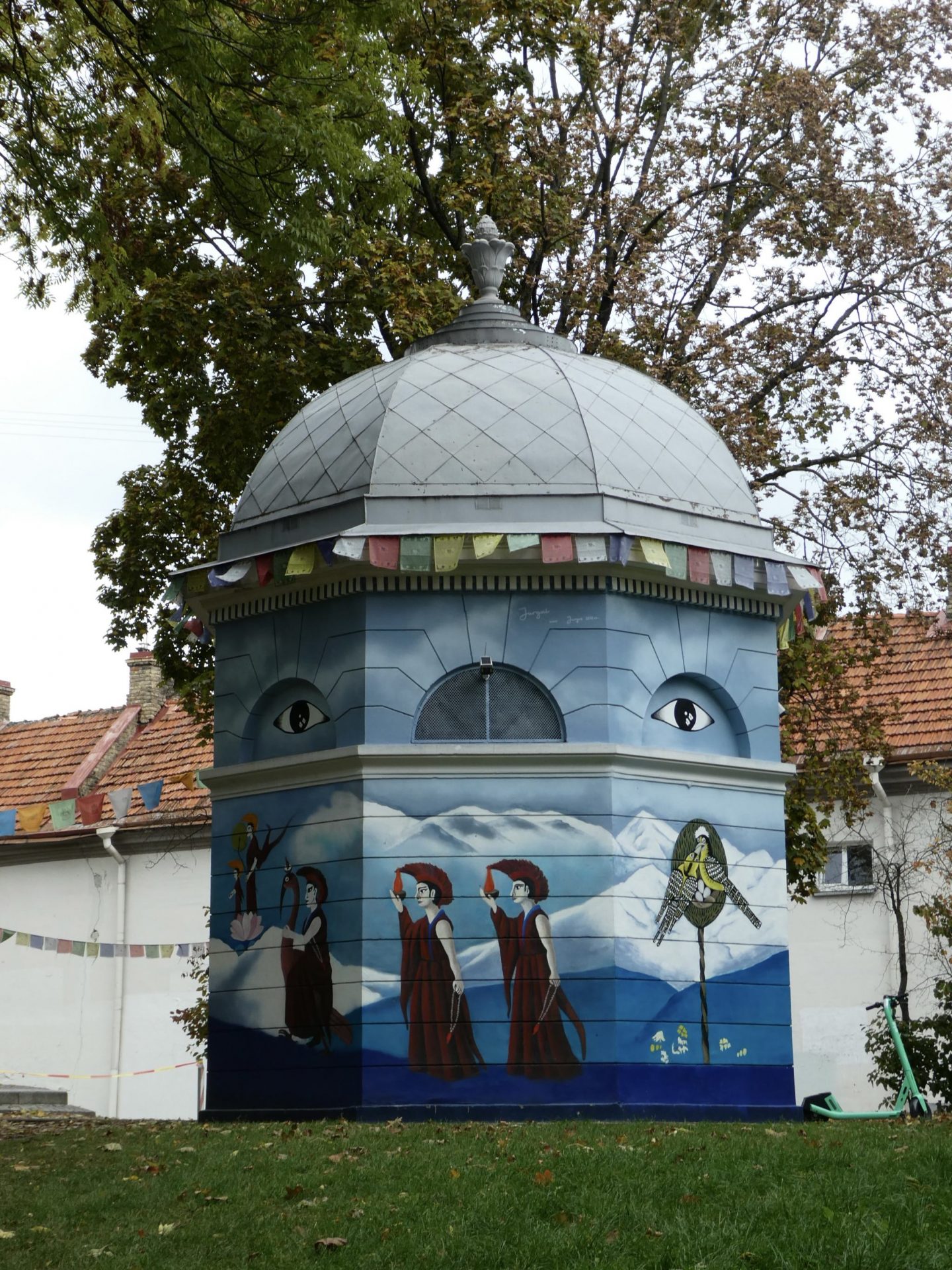 Unsurprisingly, Uzupis is a very arty place, although some of it is a bit disturbing. 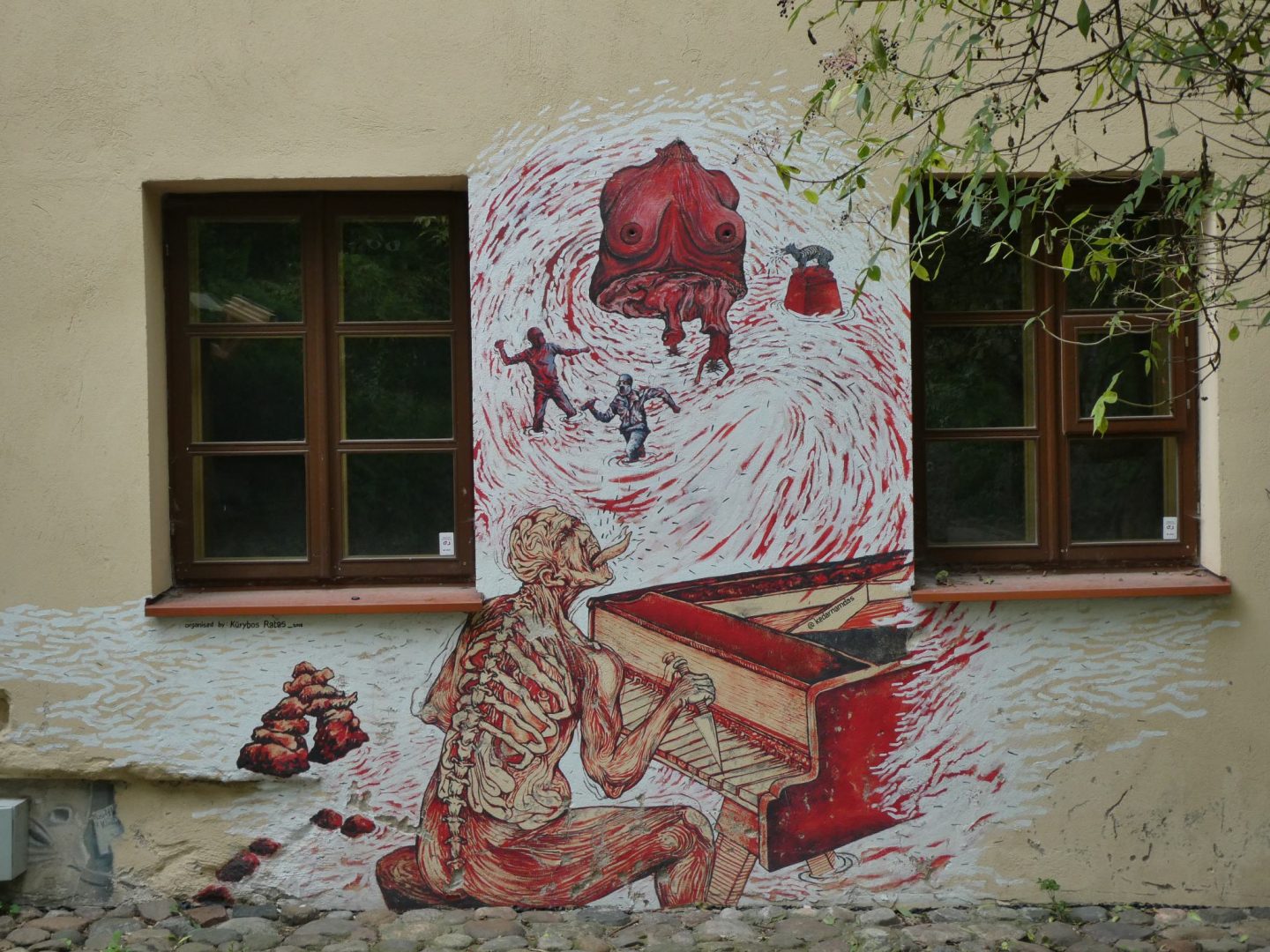 Anyone in need of companionship can hang out with Uzupis Cat.  He comes with his own set of rules. 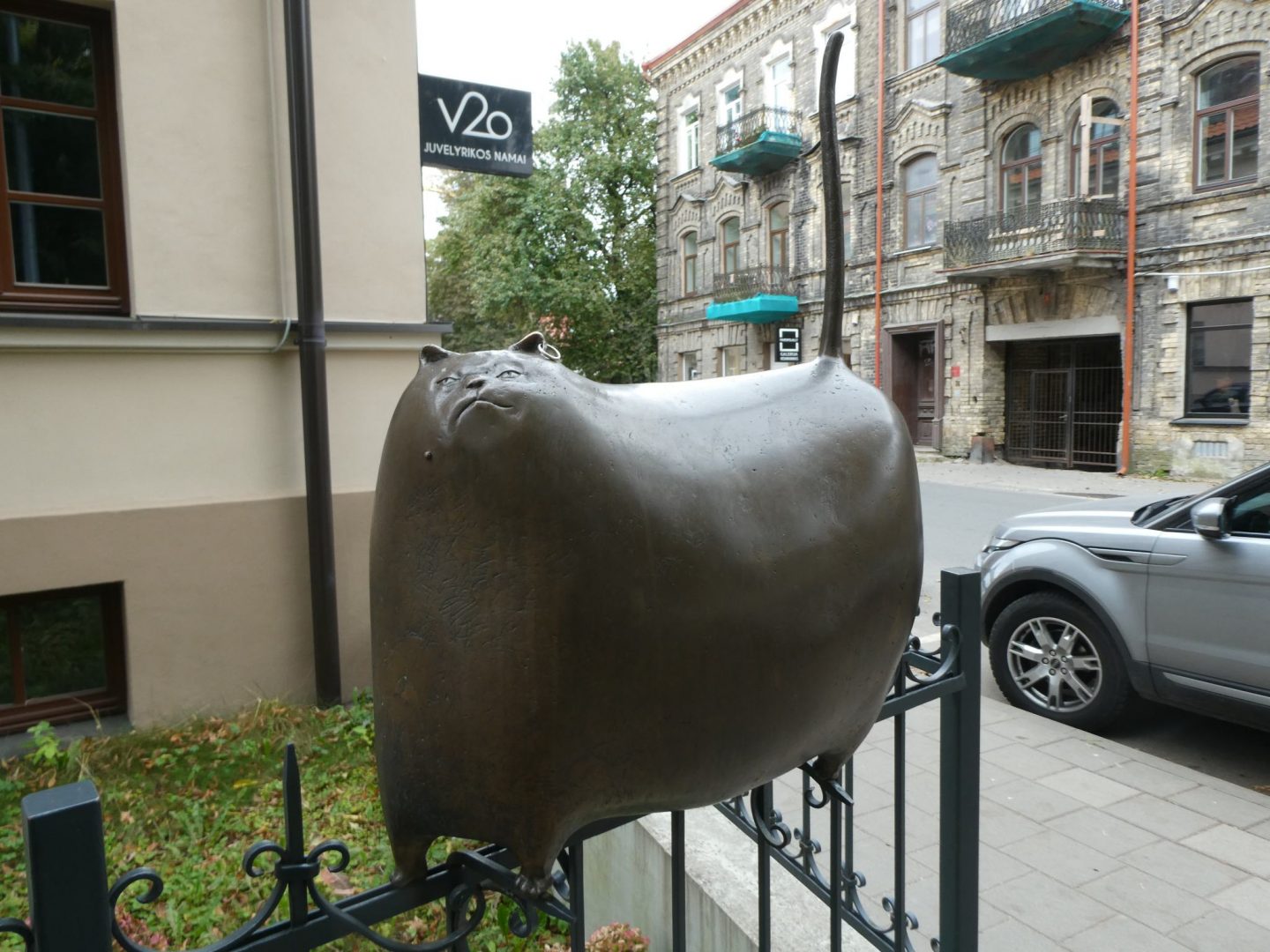 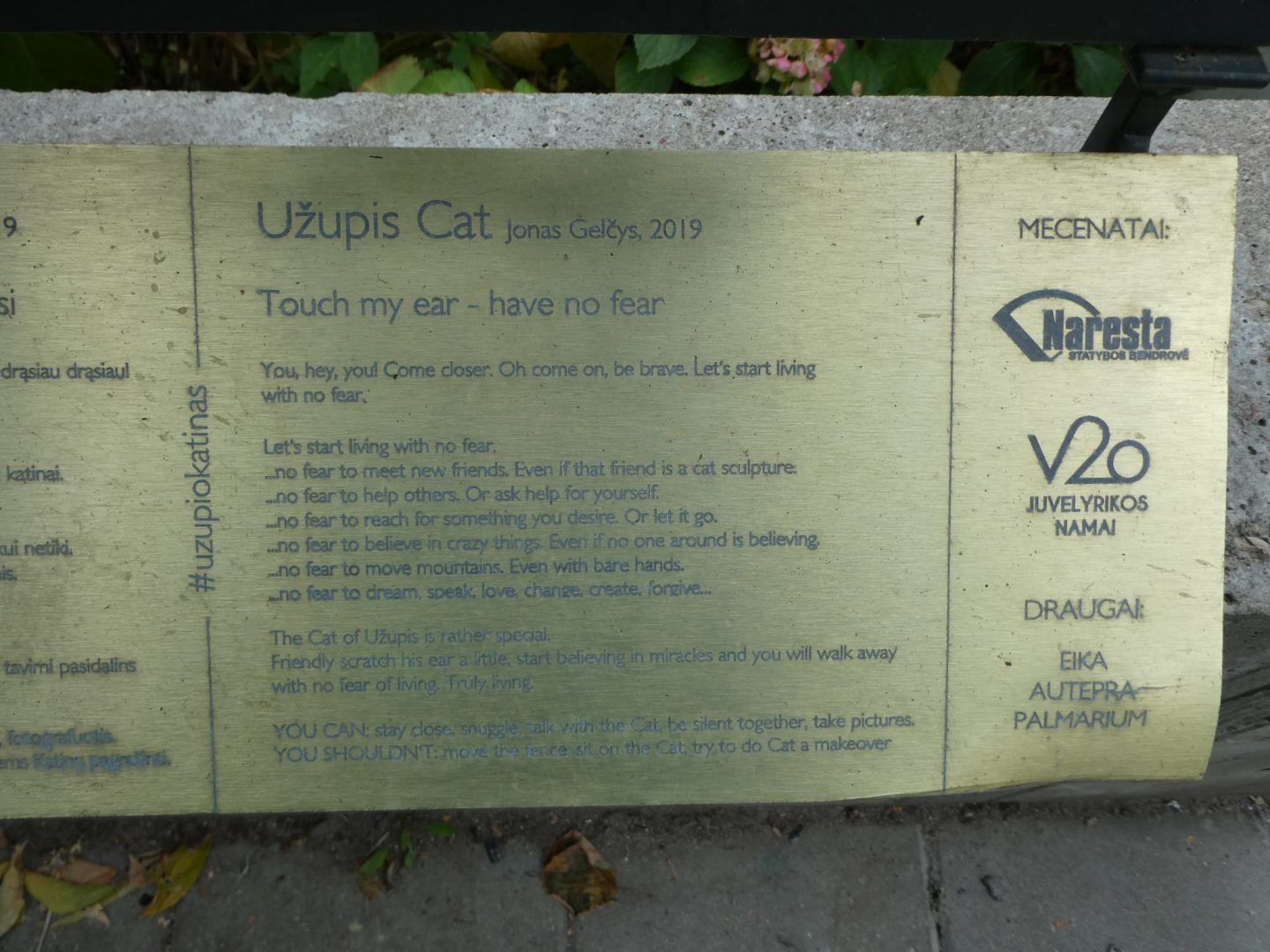 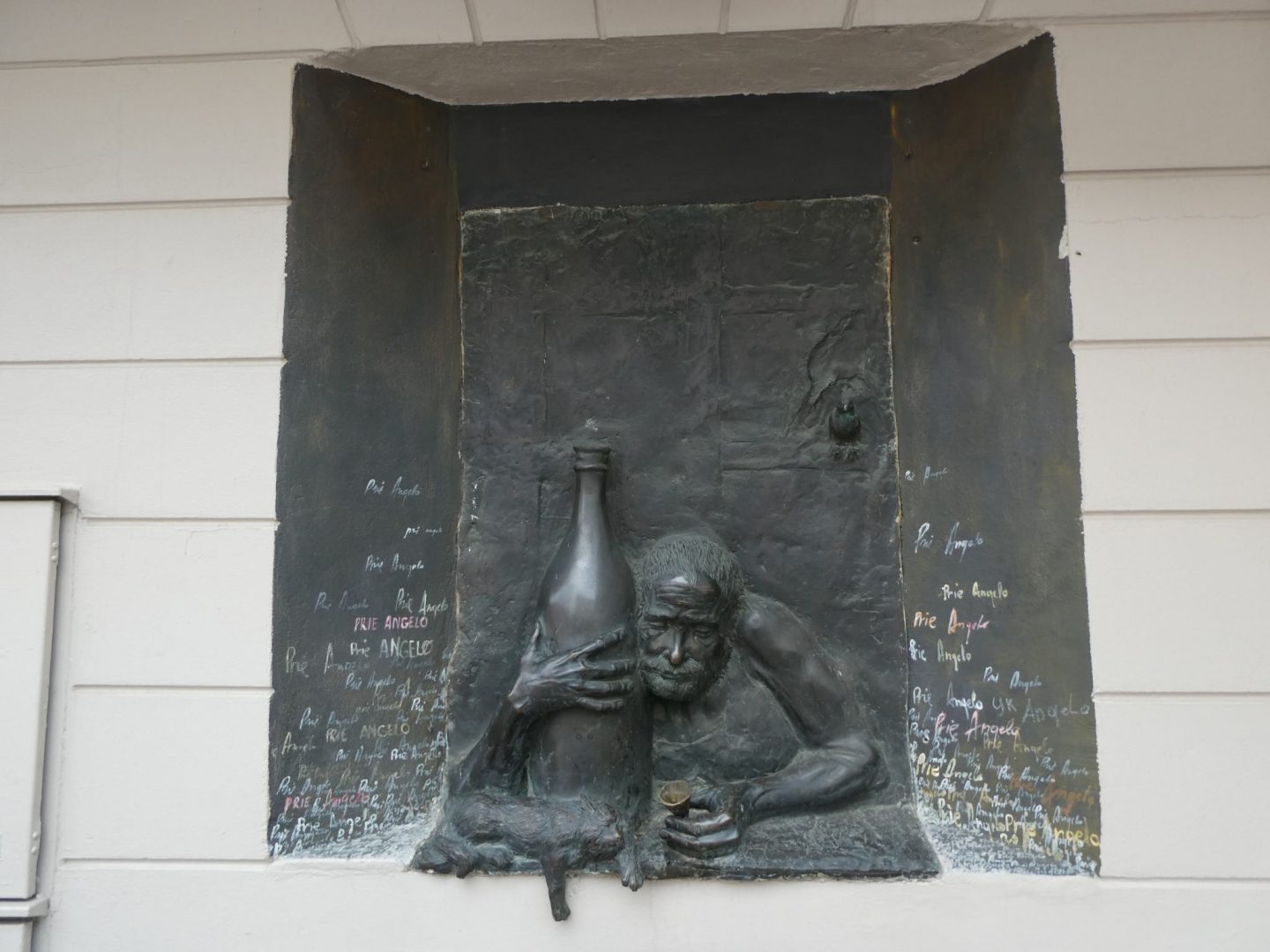 But internet cafes, shopping malls and government institutions are not allowed.  What a fun place to live!

What is believed to be the world’s first memorial to Frank Zappa is here in Vilnius.  Why, no one seems to know.  Zappa had no known association with the city.  It’s totally random. 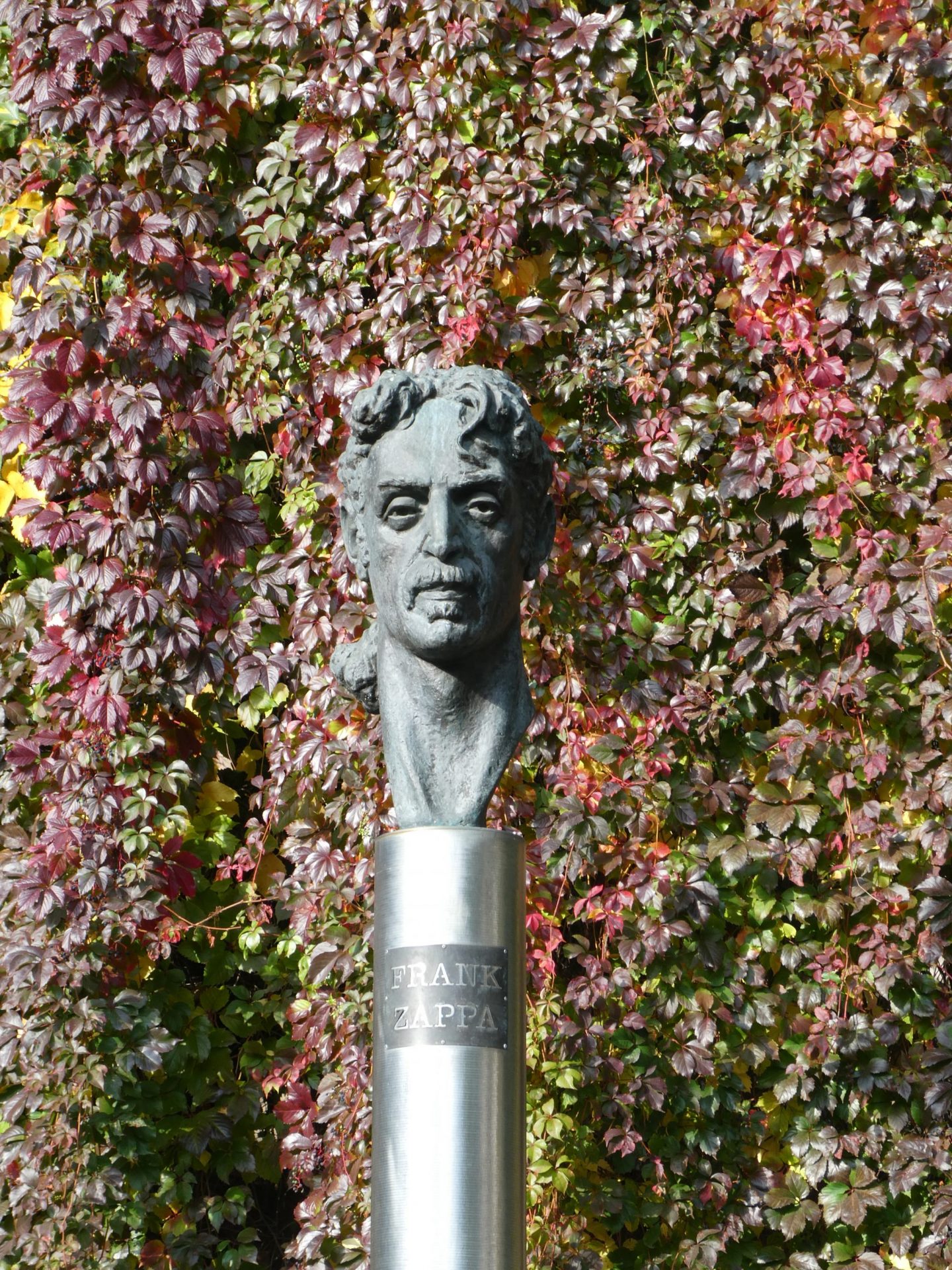 We are fairly certain Frida Kahlo never visited Vilnius either.  Leon Trotsky once owned a house here.  He and Frida had an affair when he was living in exile in Mexico before an assassin put an ice pick through his skull.  Does this explain a mural of Frida here?  Or is she just an iconic image everywhere?  Either way, time hasn’t been kind to her mural. 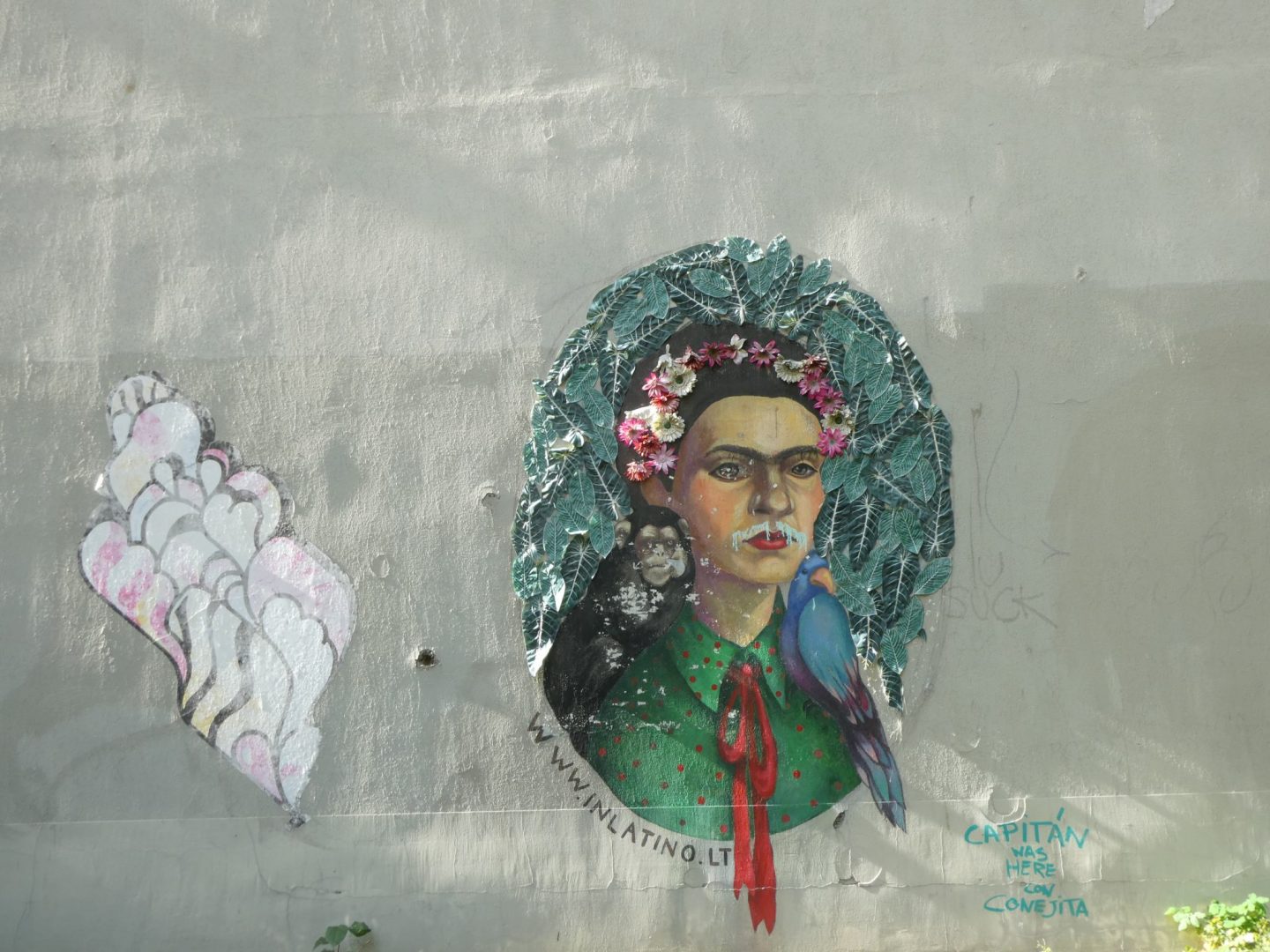 Einstein has fared better, even getting an image makeover. 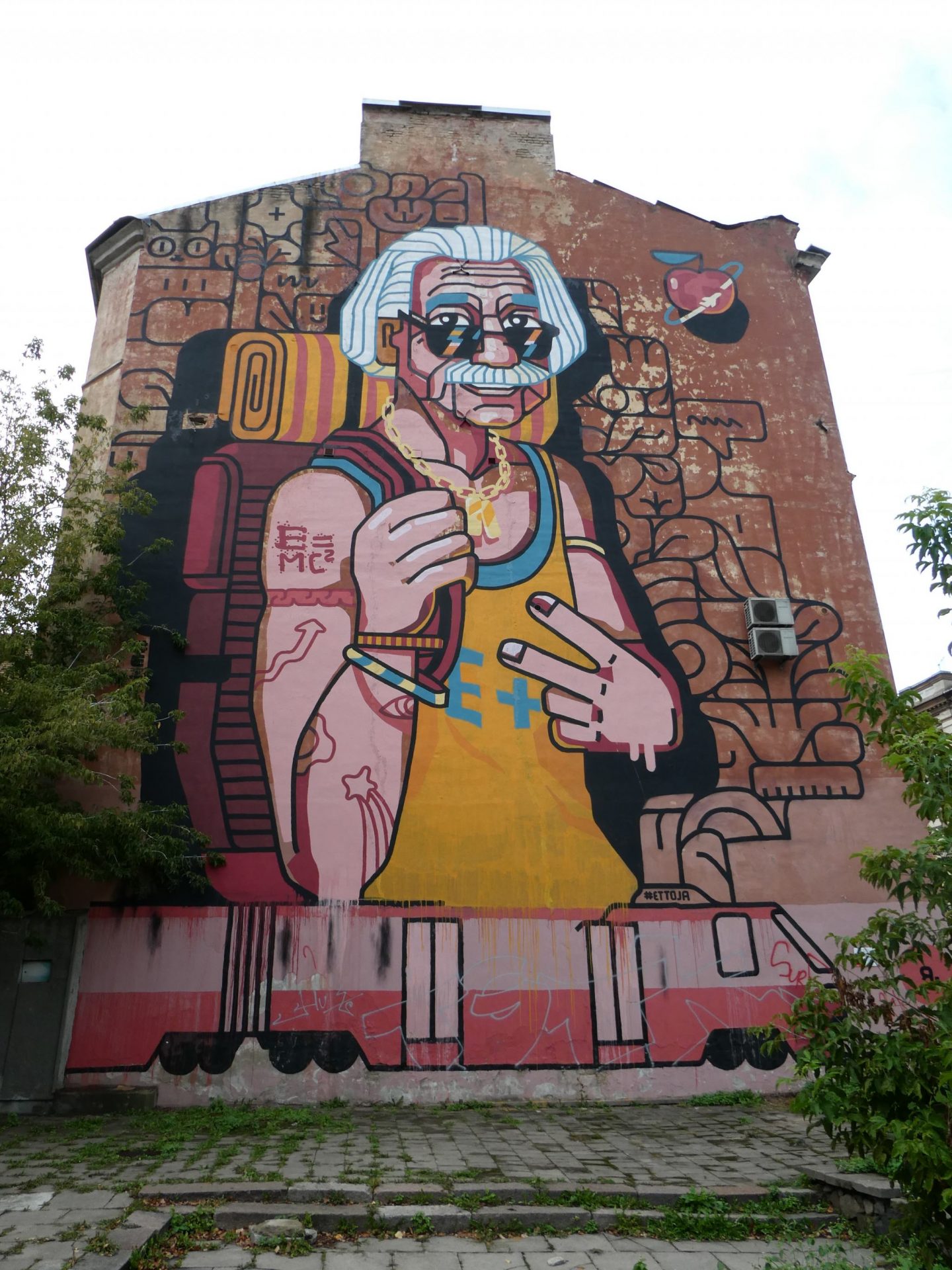 Prior to WWII, Vilnius had one of the largest Jewish communities in Europe.  In 1812, Napoleon referred to it as ‘the Jerusalem of the North’.  But during the Nazi occupation, 95% of Lithuania’s 265,000 Jewish citizens were murdered by the German occupying forces and/or local collaborators.

A small Holocaust Museum colloquially referred to as the Green House is a particularly moving, small museum established and run by survivors which focusses on presenting the horrors of that period through the personal stories of Vilnius Jews.   It includes a recreation of a ghetto room to demonstrate how Jews were forced to live before, ultimately, the ghetto was ‘liquidated’ and the residents murdered.

Here you can sit and watch a video about Yitskhok Rudashevski, a 14 year old boy who kept a diary for two years while surviving in the Vilnius ghetto.  A sort of Lithuanian Anne Frank.  He and his cousin hid the diary when the ghetto was liquidated.  Along with the other residents, he and his family were marched out of the city and killed.  His cousin escaped, joined the partisans and survived the war.  She later returned and retrieved the diary which, amazingly, was still in its hiding place.

There are also translated copies of some fairly horrifying documents.  Anyone with doubts about the systematic nature or intentions of the Nazis should read this. 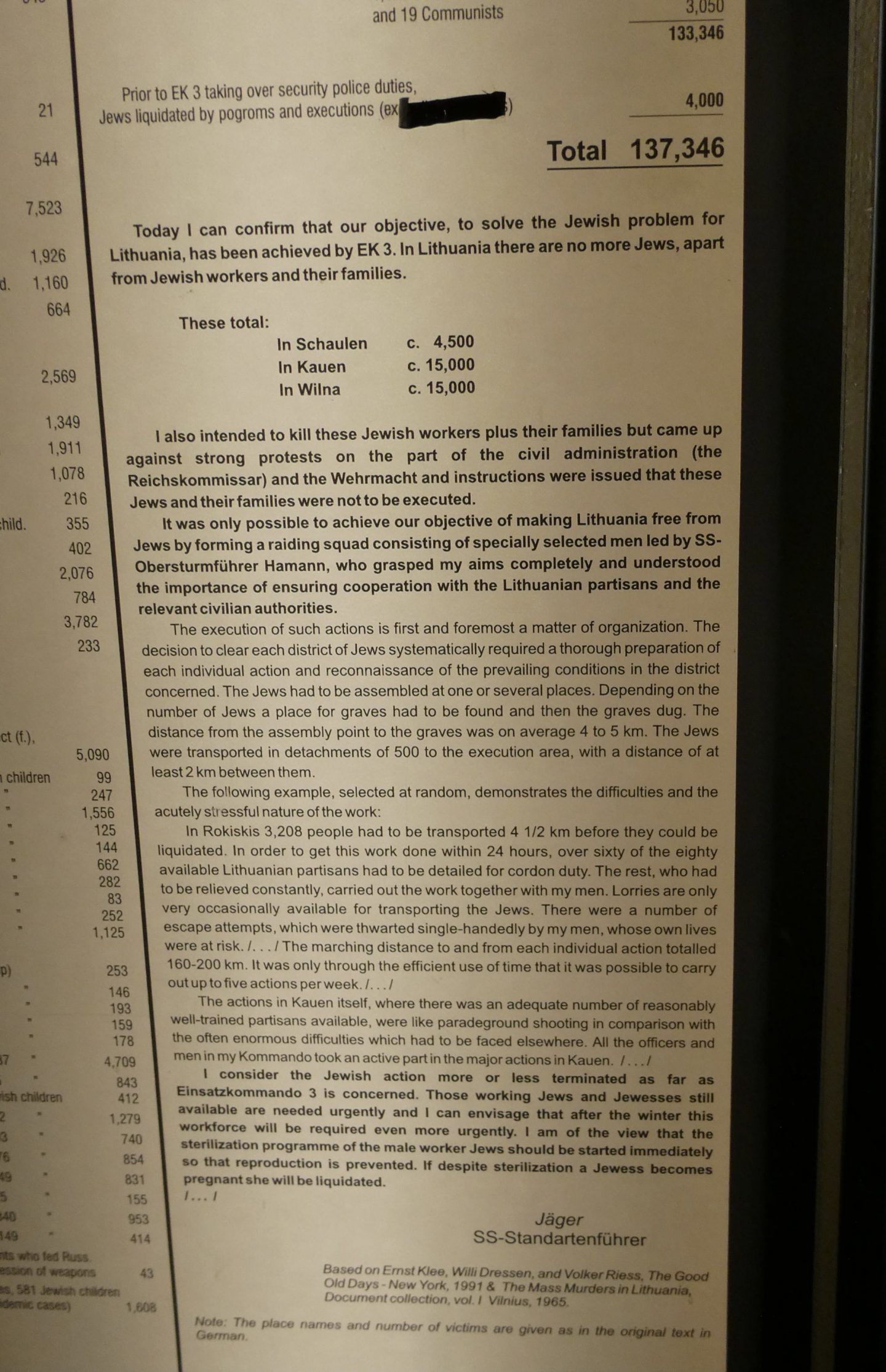 In our Kaunas blog we talked about Chijune Sugihara and Jan Zwartendijk, the diplomats who saved thousands by issuing visas against orders.  They are both honoured in the courtyard here. 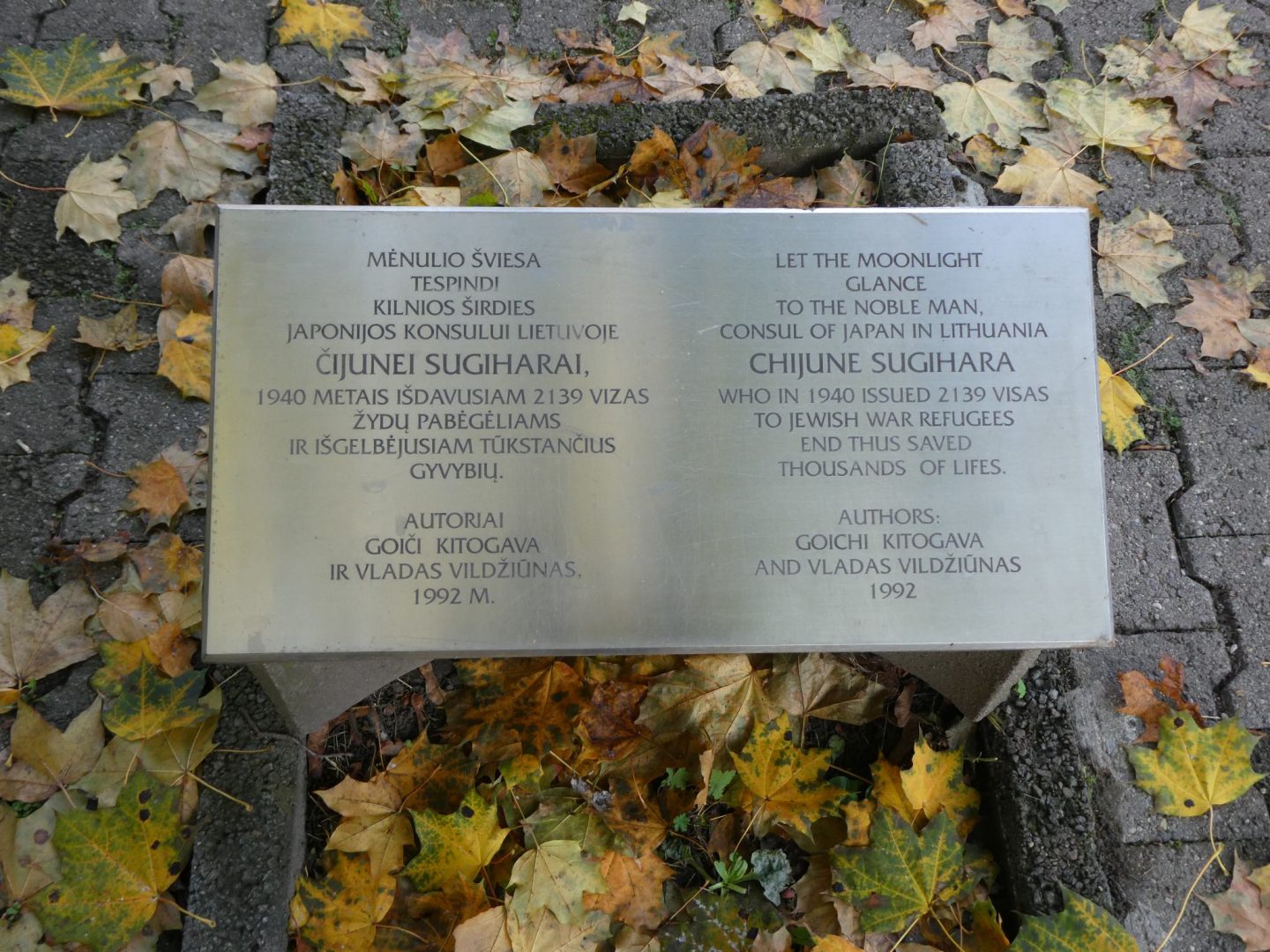 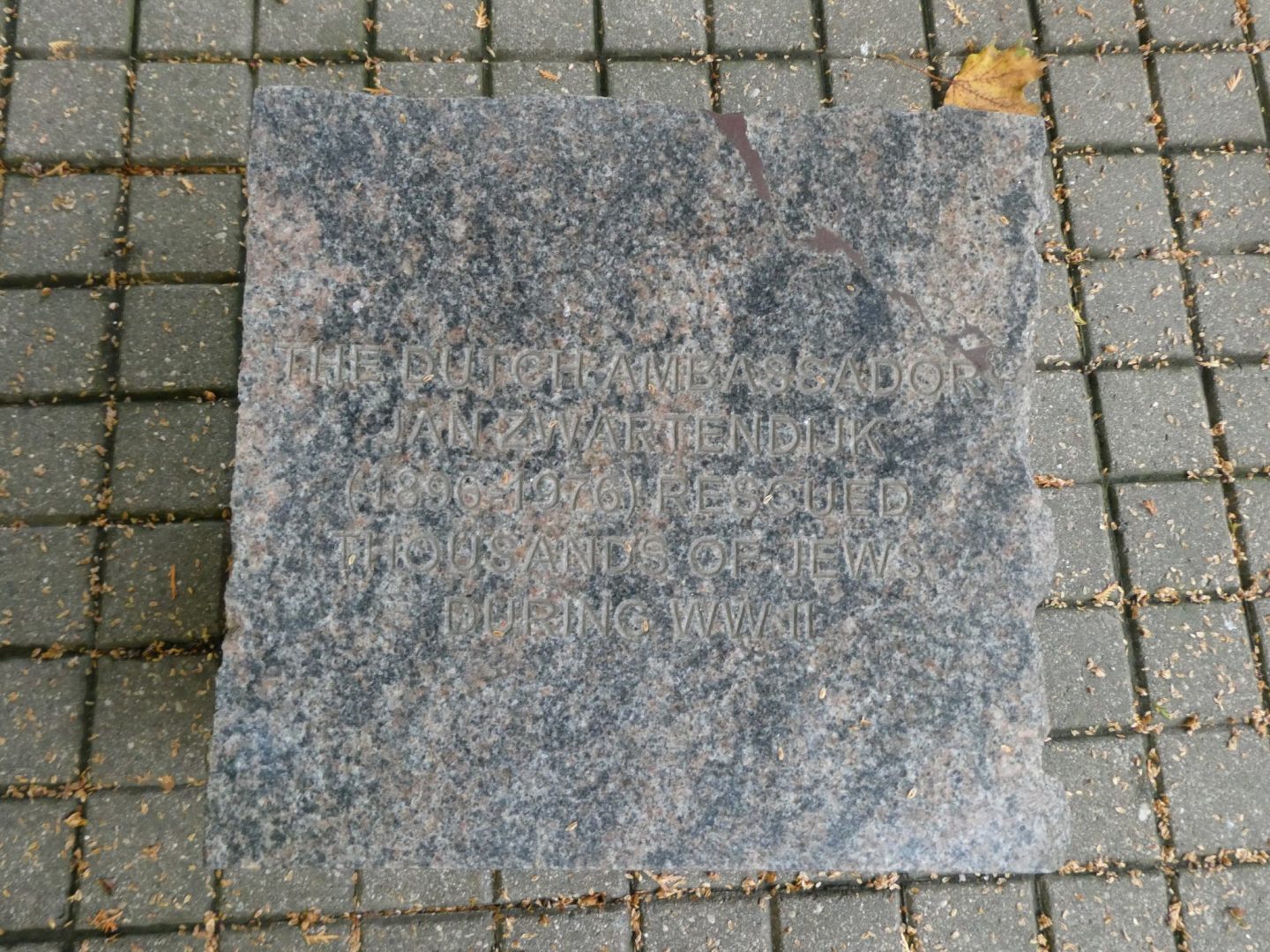 A couple of blocks away is the Museum of Occupations and Freedom Fighters.  The building was the headquarters of the Gestapo in the Nazi era, and then the KGB Headquarters in the Soviet period.  It’s a grim place which details the losses suffered by Lithuania under the two regimes. 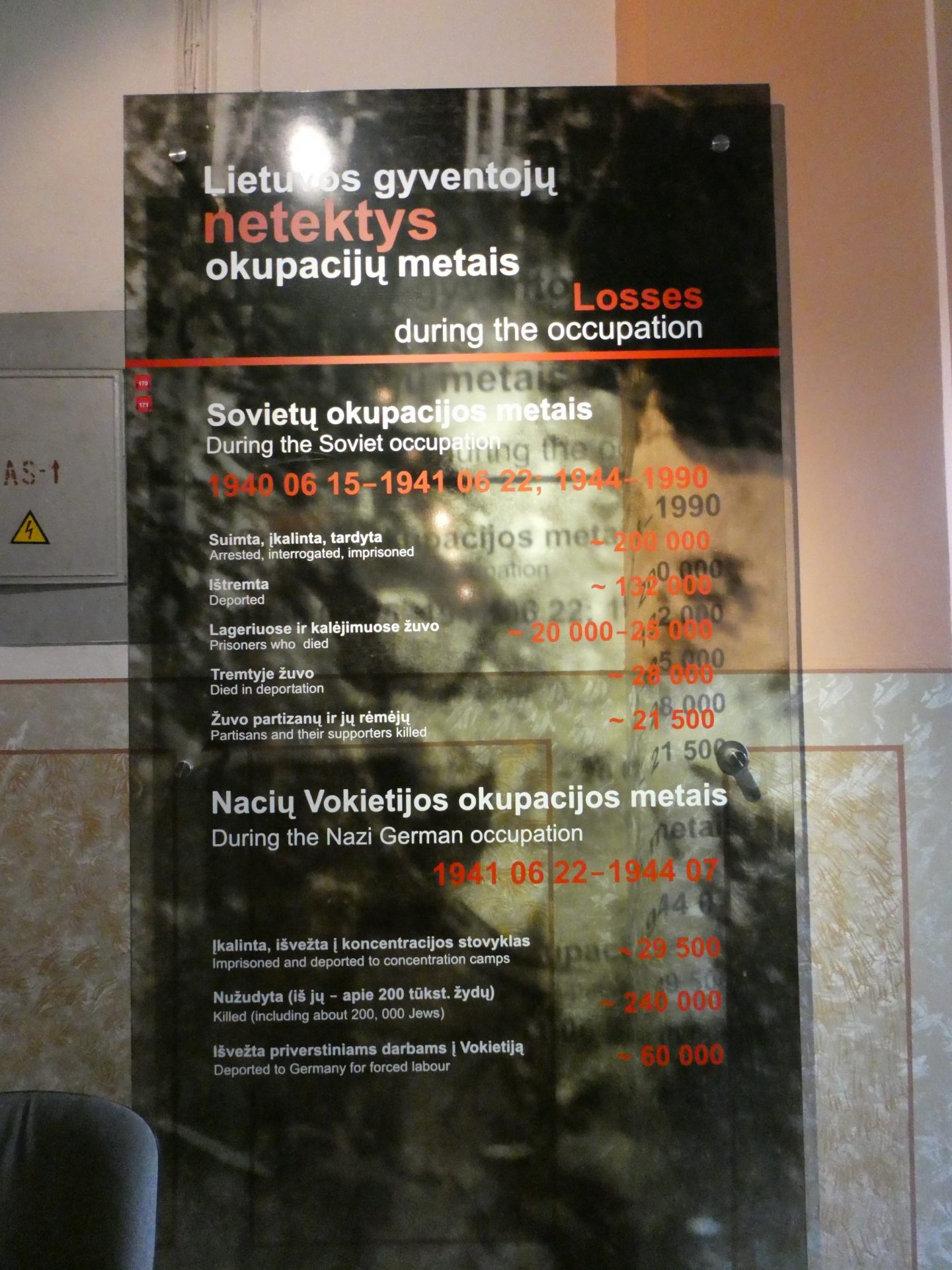 There are preserved prison cells, a recreation of KGB offices where surveillance operations were undertaken and an exhibition dedicated to those who were killed or deported for resistance activities in the Soviet era.

Back in Cathedral Square there’s a stone tile with the word ‘stebuklas’, which means ‘miracle’.  Two million people holding hands in a human chain which stretched 690km across Estonia, Latvia and Lithuania in 1989 in a peaceful protest against Soviet occupation, ended here.  As mentioned in our Tallin post, the Baltic Way captured the attention of the world and while it didn’t happen overnight, freedom and independence for all three countries followed. 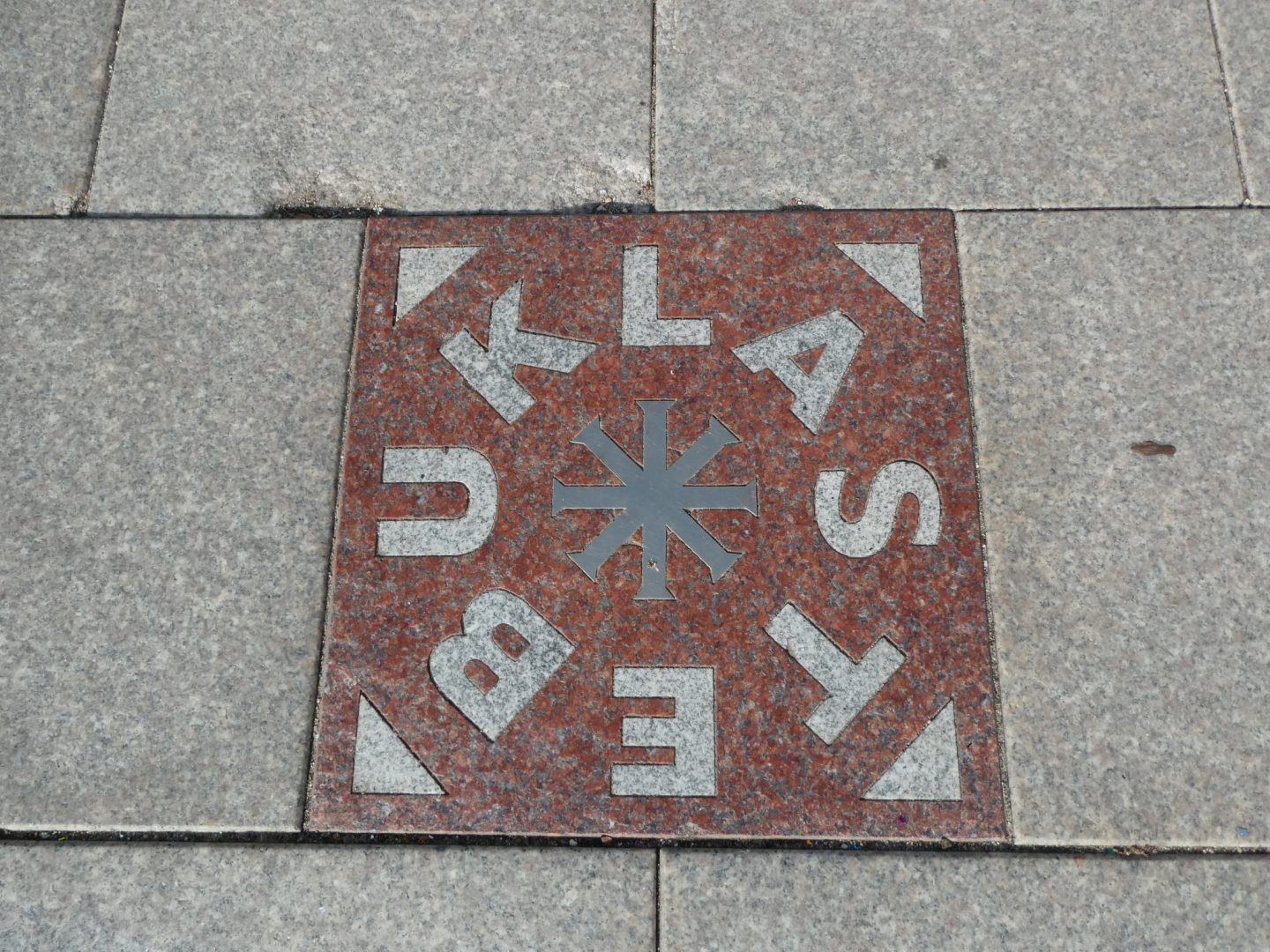 Tradition now says that if you do a 360 degree turn on the tile while making a wish, the wish will come true.  But you have to find the tile yourself in the vast square.  It’s not marked and it’s bad luck to disclose its precise location to others. It takes some systematic leg work to track it down.  But that’s ok.  If miracles came easily, they wouldn’t be miracles.  Right?