Munich was heavily bombed in WWII and although it has both surviving and many restored old buildings, it’s more famous for beer and Oktoberfest than anything else.  Still, there’s enough to keep a tourist on their skates for a few days.

Regular readers will know how much Julie enjoys religious oddities.  Munich has some good ones.

Frauenkirche, aka the Cathedral of Our Dear Lady took decades to build.  When finally completed in the mid 1520s, it had a capacity for 20,000 congregants, which seems ambitious considering the entire population of Munich at that time was only 13,000.  It’s famous as the site of the Devil’s Footprint.

As this aerial photograph lifted from Wikipedia shows, the cathedral has lots of windows. 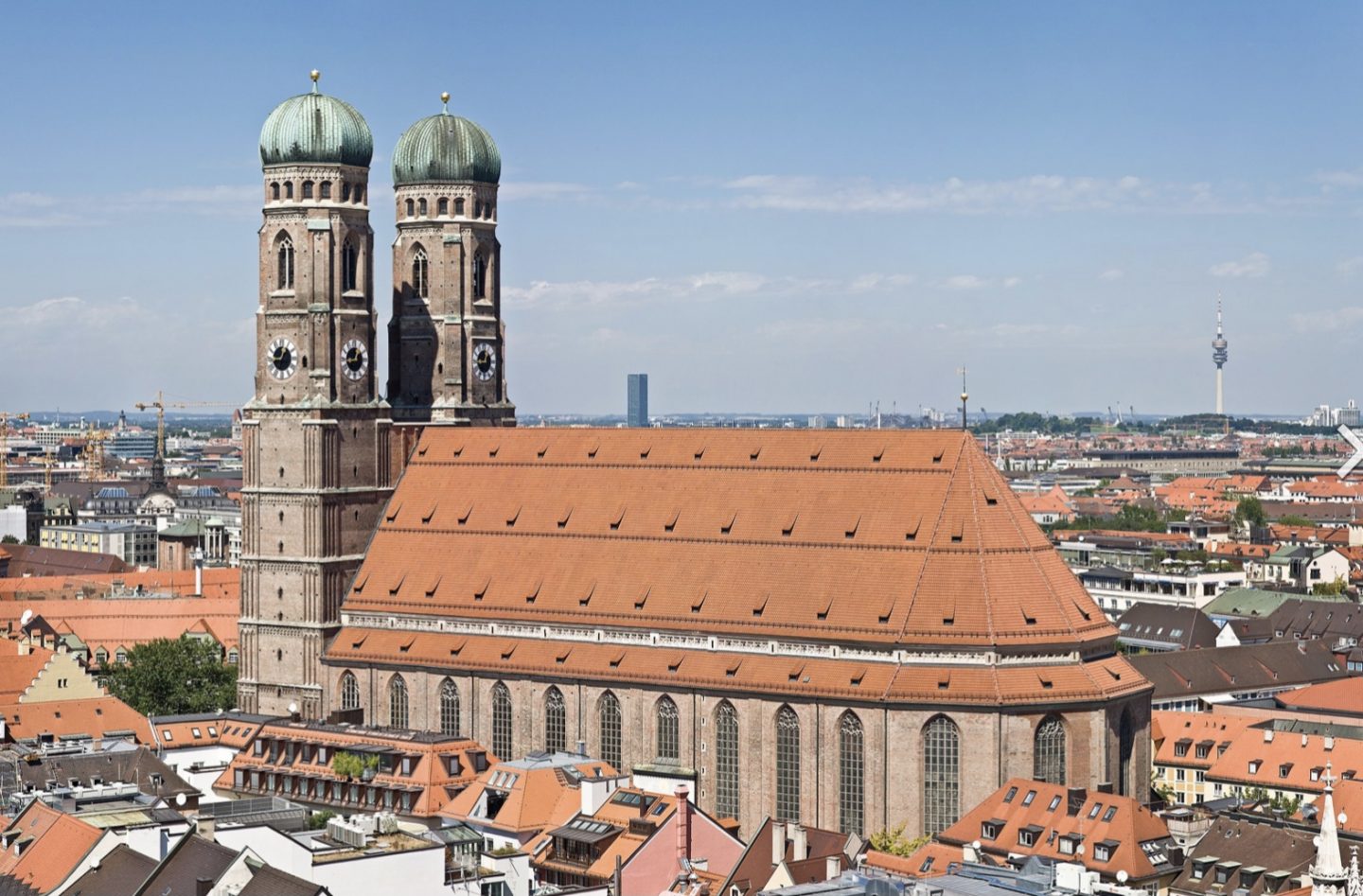 But standing in the entrance portal, it looks like there are none. 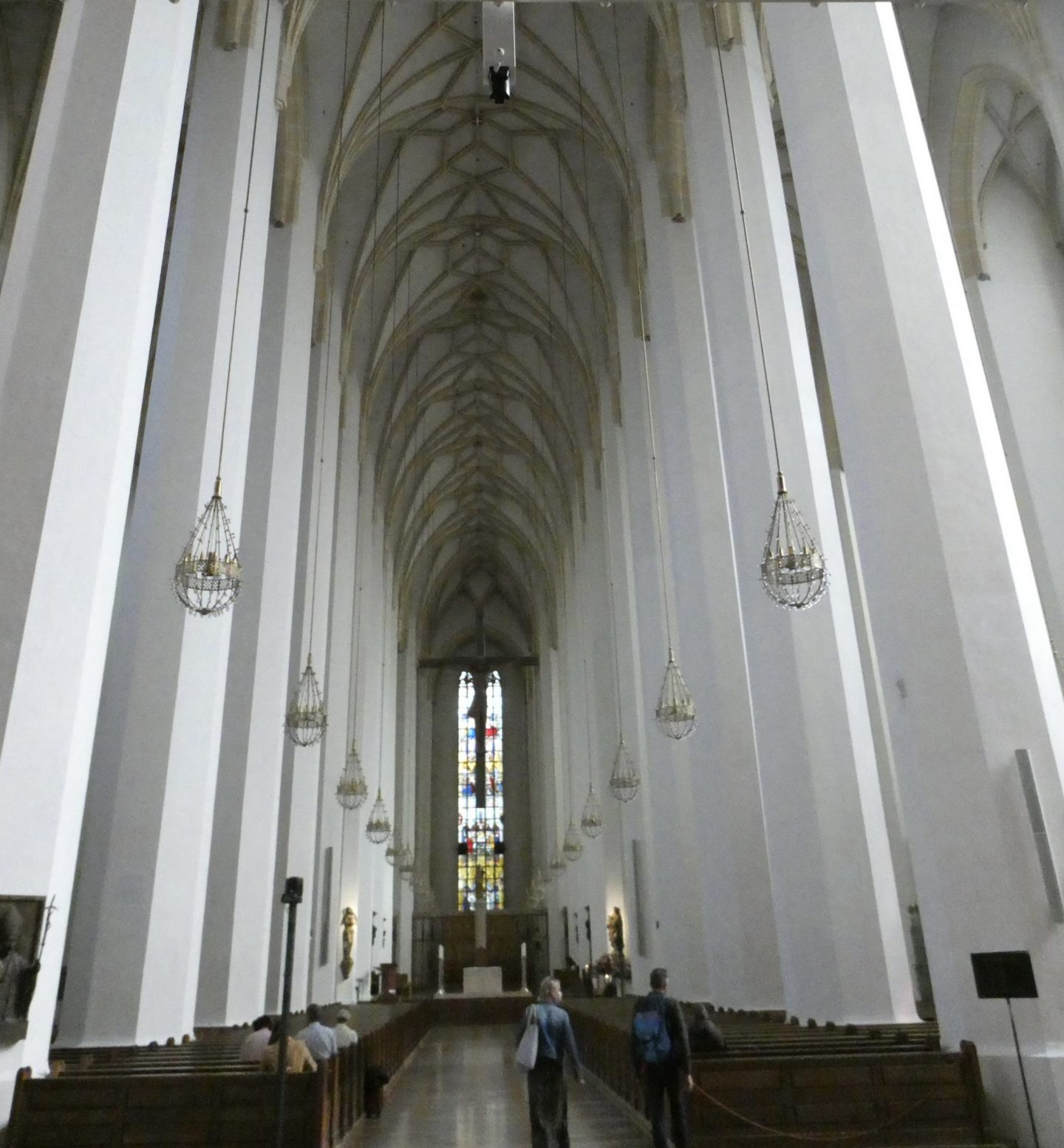 Why?  According to local legend, the builder made a deal with the Devil in which the evil one financed the construction of the cathedral on condition it contain no windows.  The builder tricked the Devil with the positioning of the columns.  By the time the Devil realised he had been conned, the church had been consecrated, so he could not enter.  All he could do was stand in the foyer and stamp his foot in fury.  This left a dark footprint, miraculously still preserved today. 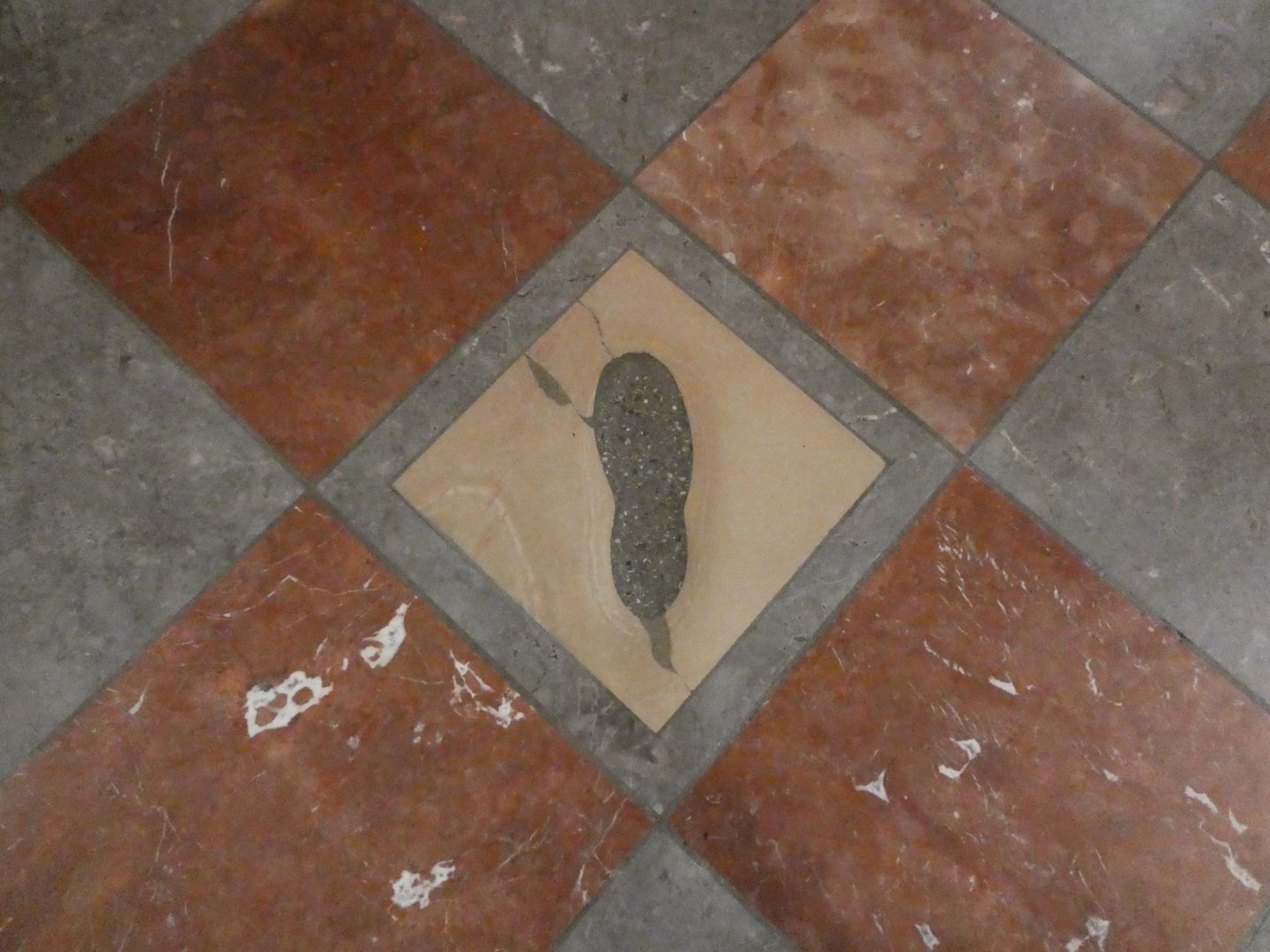 The Asam Church is worth a visit for its incredibly ornate Baroque Facade. 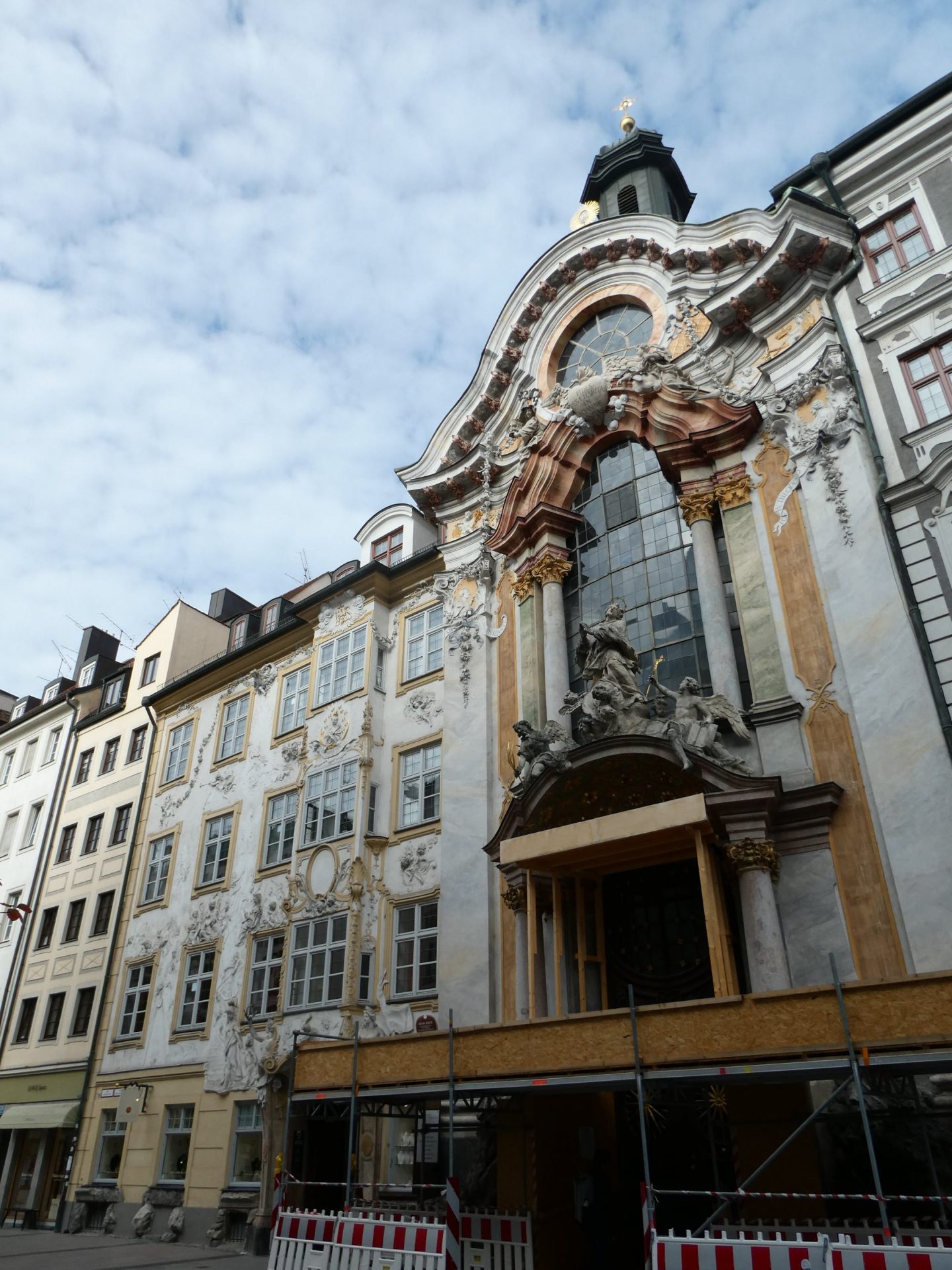 The interior is just as intricate.  Look closely and you’ll find this skeleton attacking an angel with a pair of scissors. 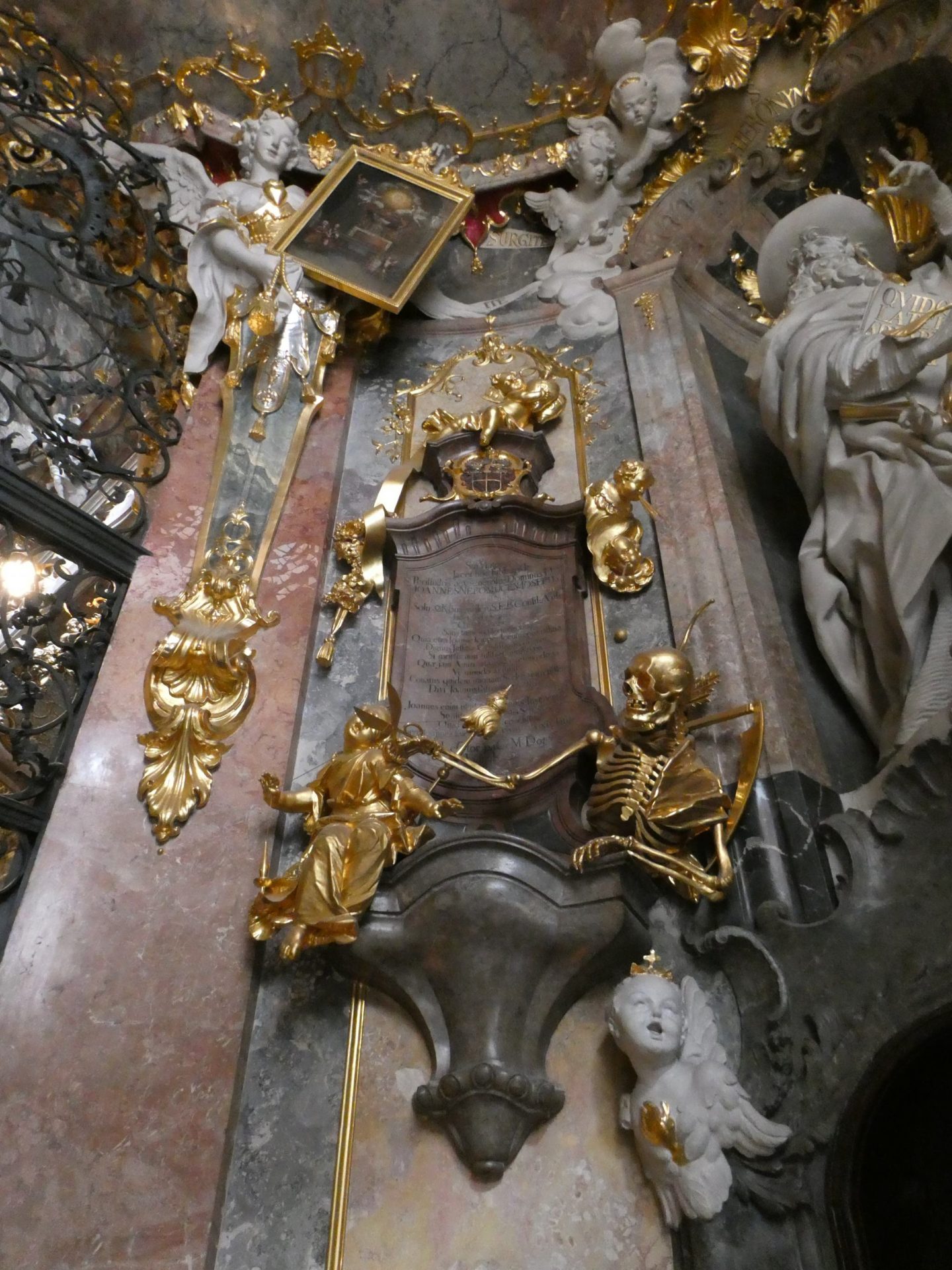 And then there’s St Peter’s Church.  We’ve seen plenty of the ‘gold clad bones of a saint’ relics at different churches around the world, and St Peter’s has a box full. 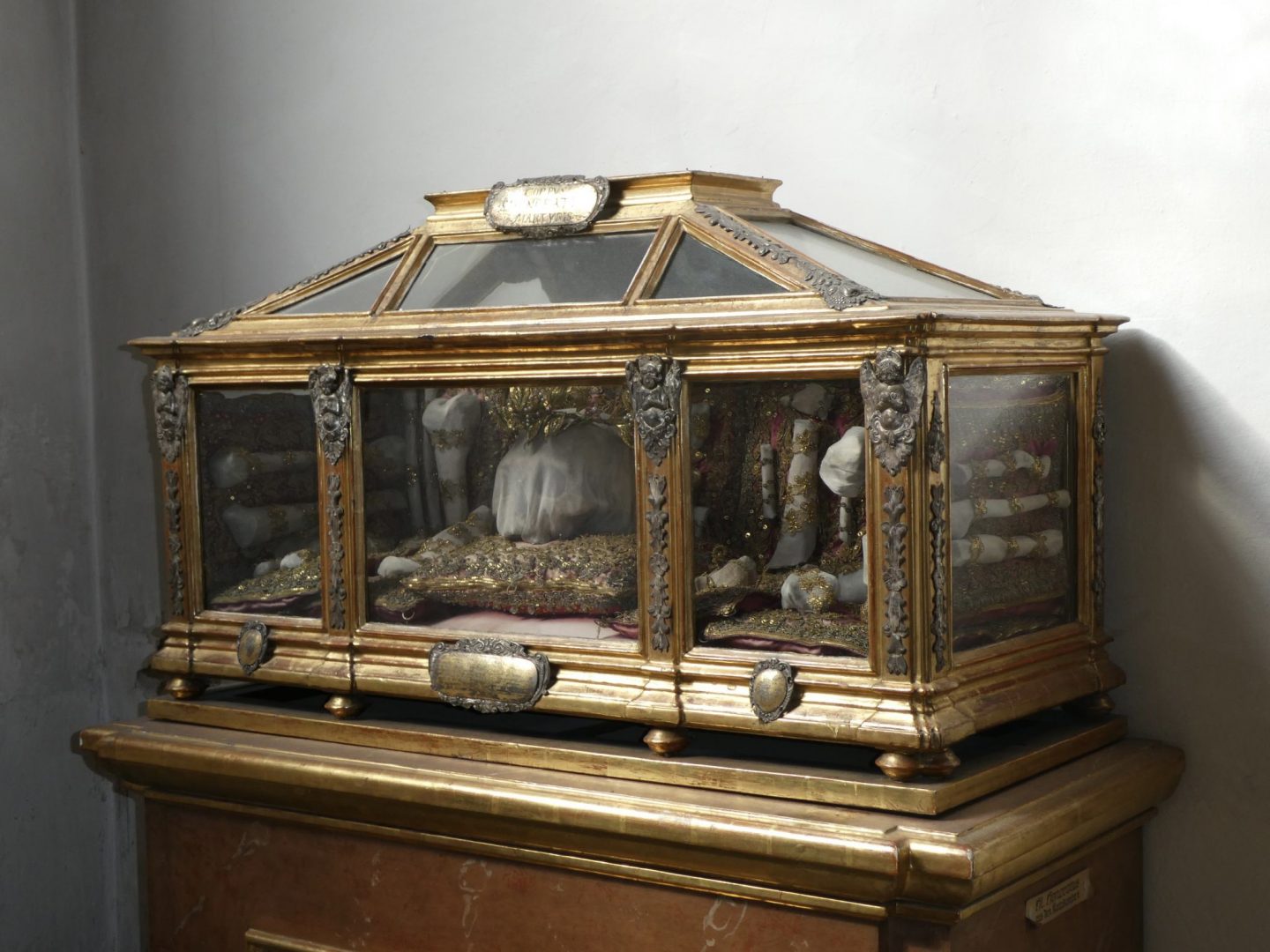 But more freaky than most is the jewel encrusted skeleton of Saint Mundita, complete with glass eyes and perfect teeth.  The patron saint of spinsters reclines on a jaunty angle, her arms and legs adorned with semi-precious stones, holding a golden palm frond.

If that’s not voyeuristic enough, on top of her glass case is the skull of Saint Erasmus, complete with blue jewels for eyes.  Not sure what happened to the rest of him.  There’s a popular belief that he was martyred by being disembowelled but that’s not is true.  Nevertheless, he is the saint for protection against intestinal ailments. 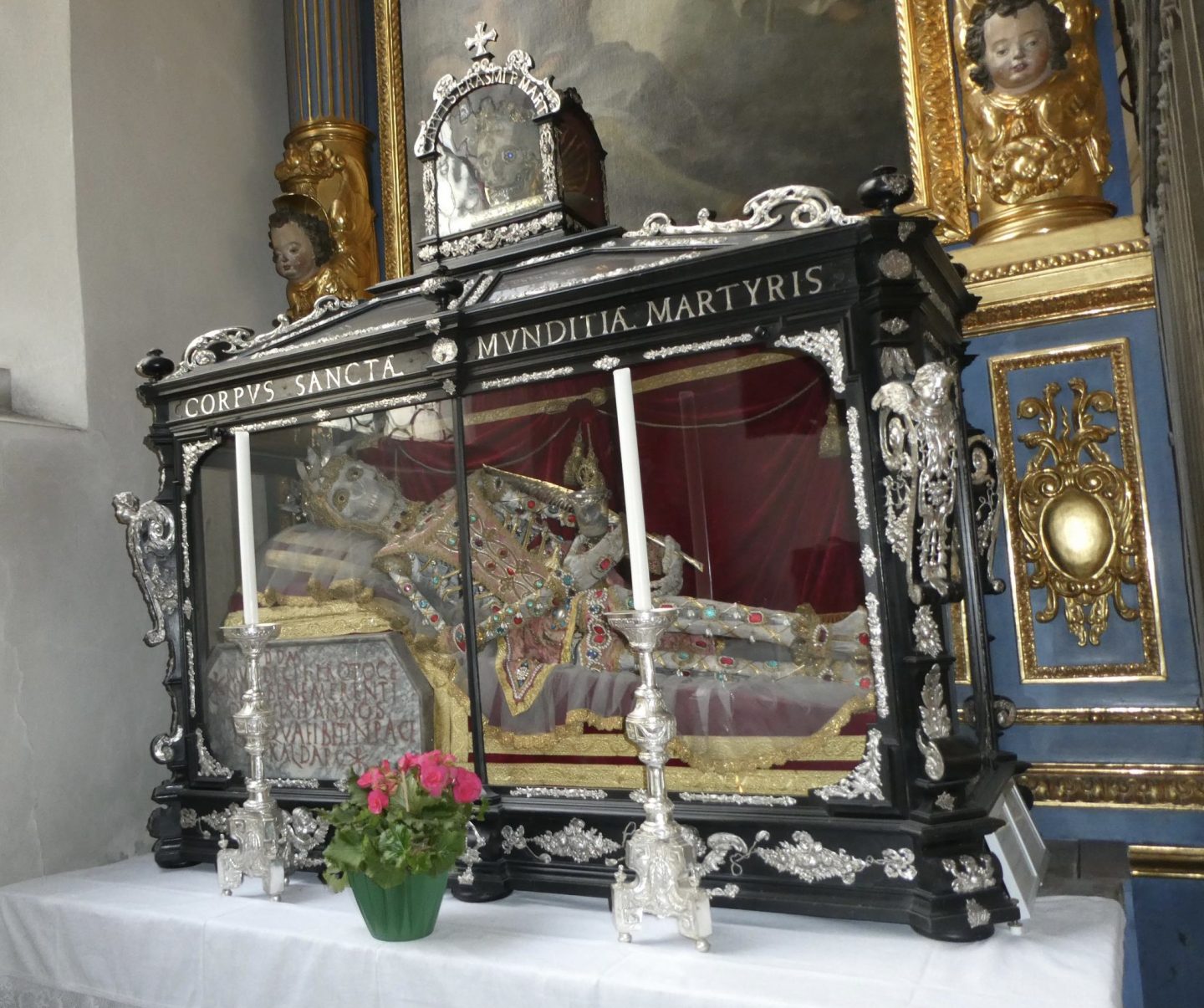 No one really knows how or where Saint Bartholemew died.  It may have been India, Armenia or Azerbaijan.  He may have been crucified, drowned or flayed and beheaded.  But somehow a popular depiction is of him being skinned alive.  This statue didn’t leave much to the imagination. 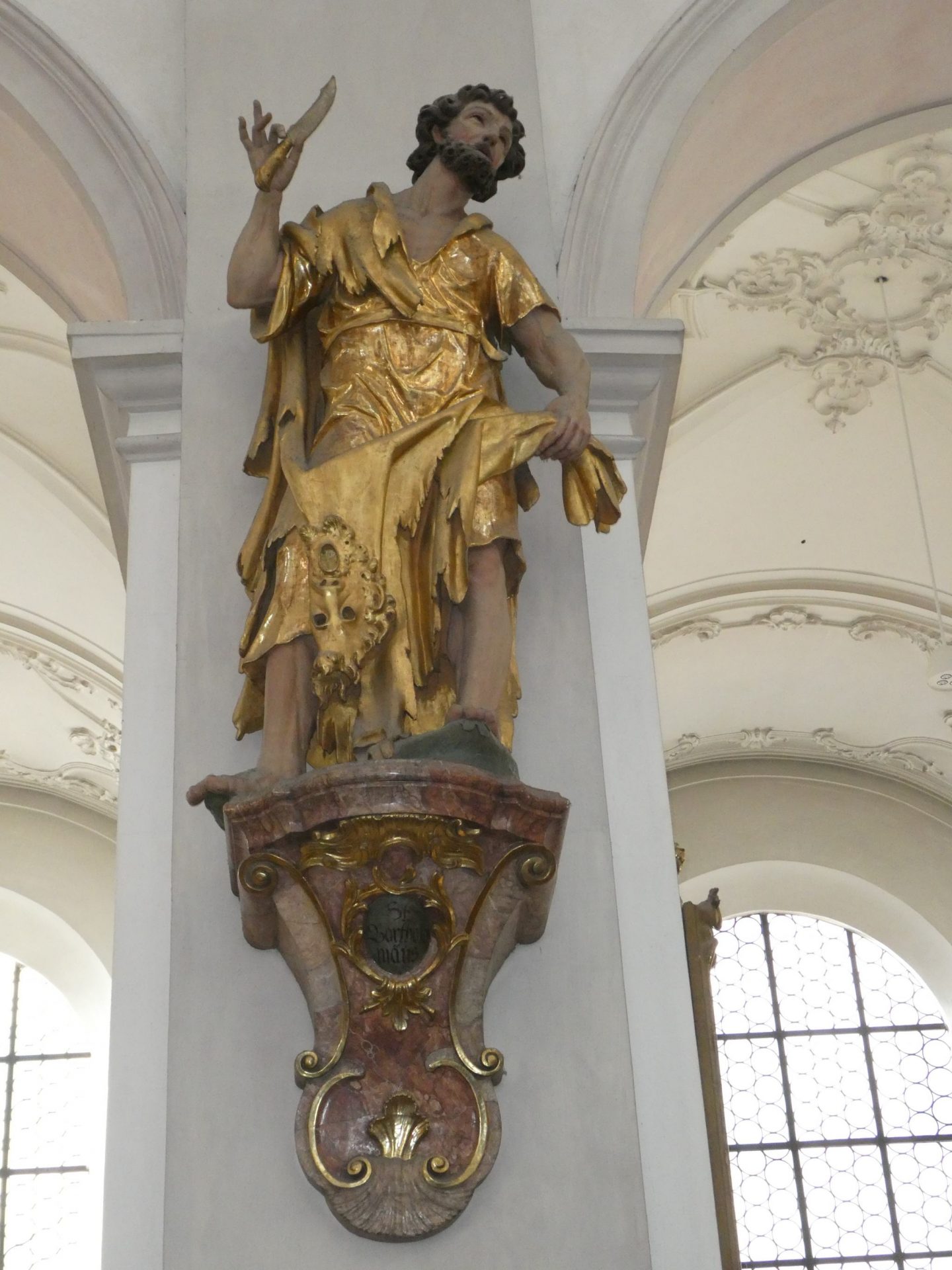 When you’ve had your fill of religious freakishness, you can join the throng at the Neues Rathaus (New Town Hall) to watch the Munich Glockenspiel on the tower perform at 11am and midday (plus 5pm in summer). 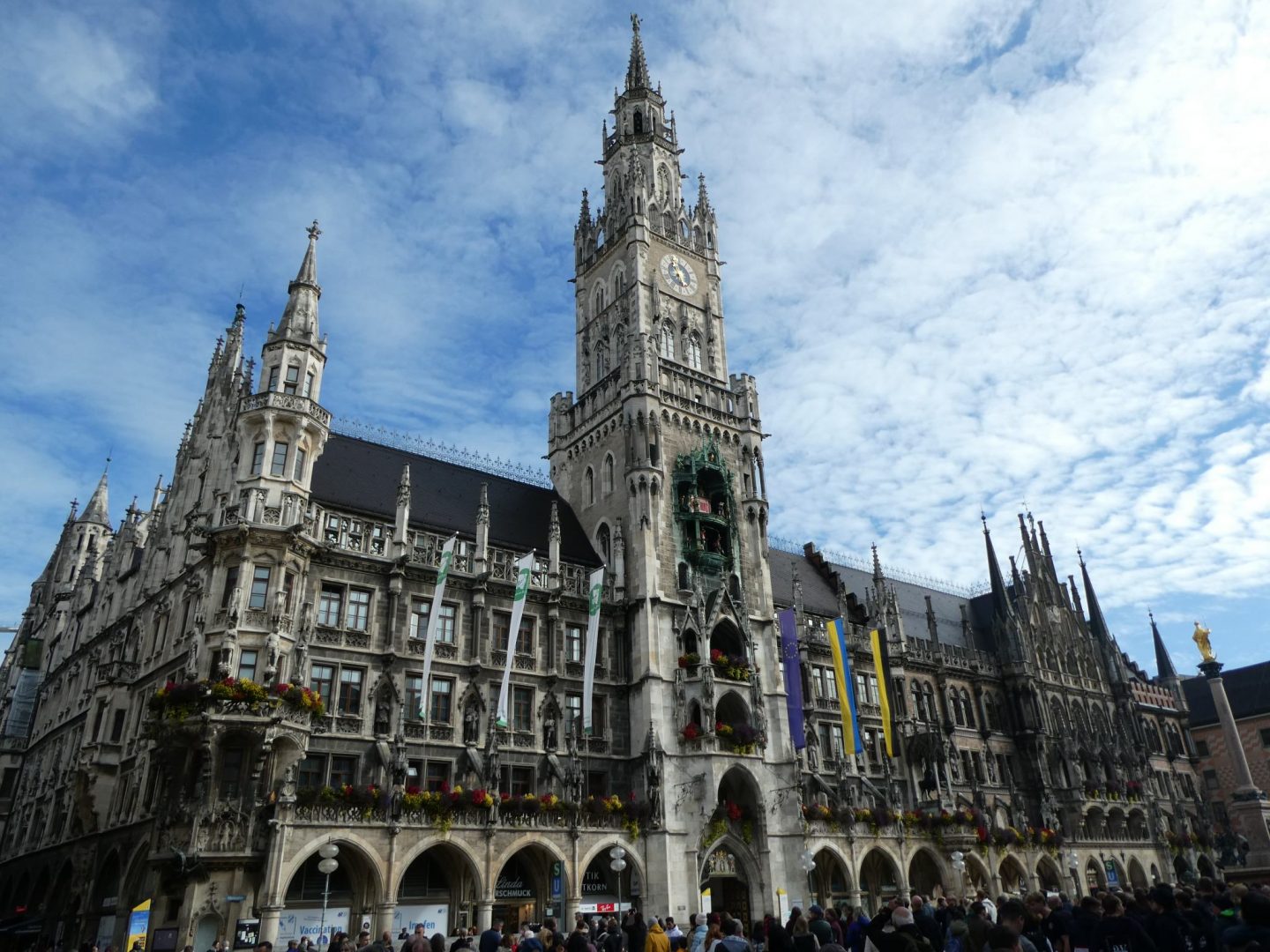 During the 15 minute spectacle, 43 bells ring out a series of tunes.  The upper level re-enacts the 1568 wedding party of Duke Wilhelm V complete with jousting.  The lower level depicts the city’s coopers performing a jig to celebrate the end of a particularly savage epidemic of the plague.  Wilhelm ordered the jig be performed every seven years to prevent a recurrence.  You can next see it live in 2026.  At the end of the chiming, a golden bird emerges at the top and chirps three times. 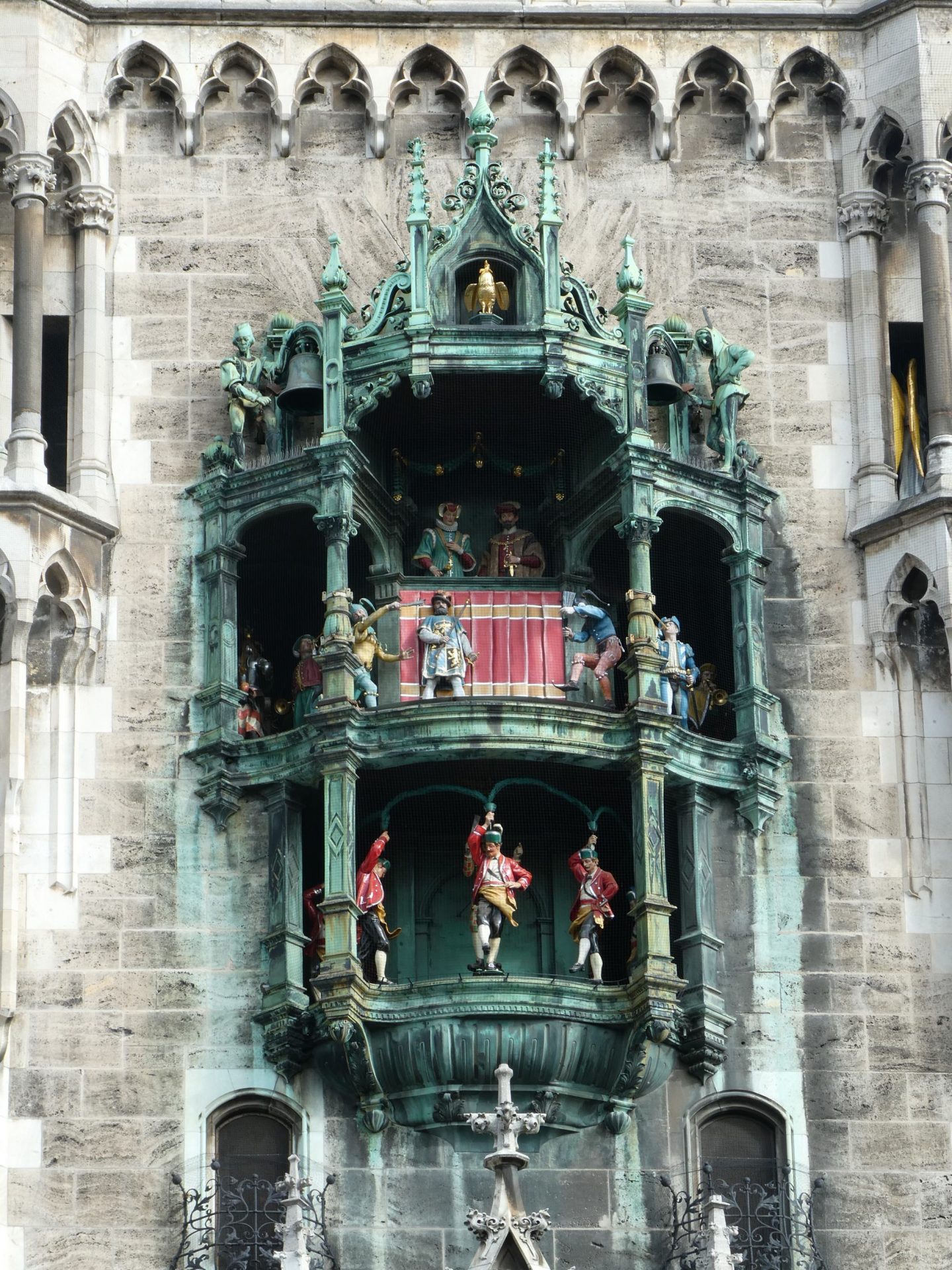 After craning your neck for 15 minutes you might need a break.  Head to one of Munich’s many beer houses. 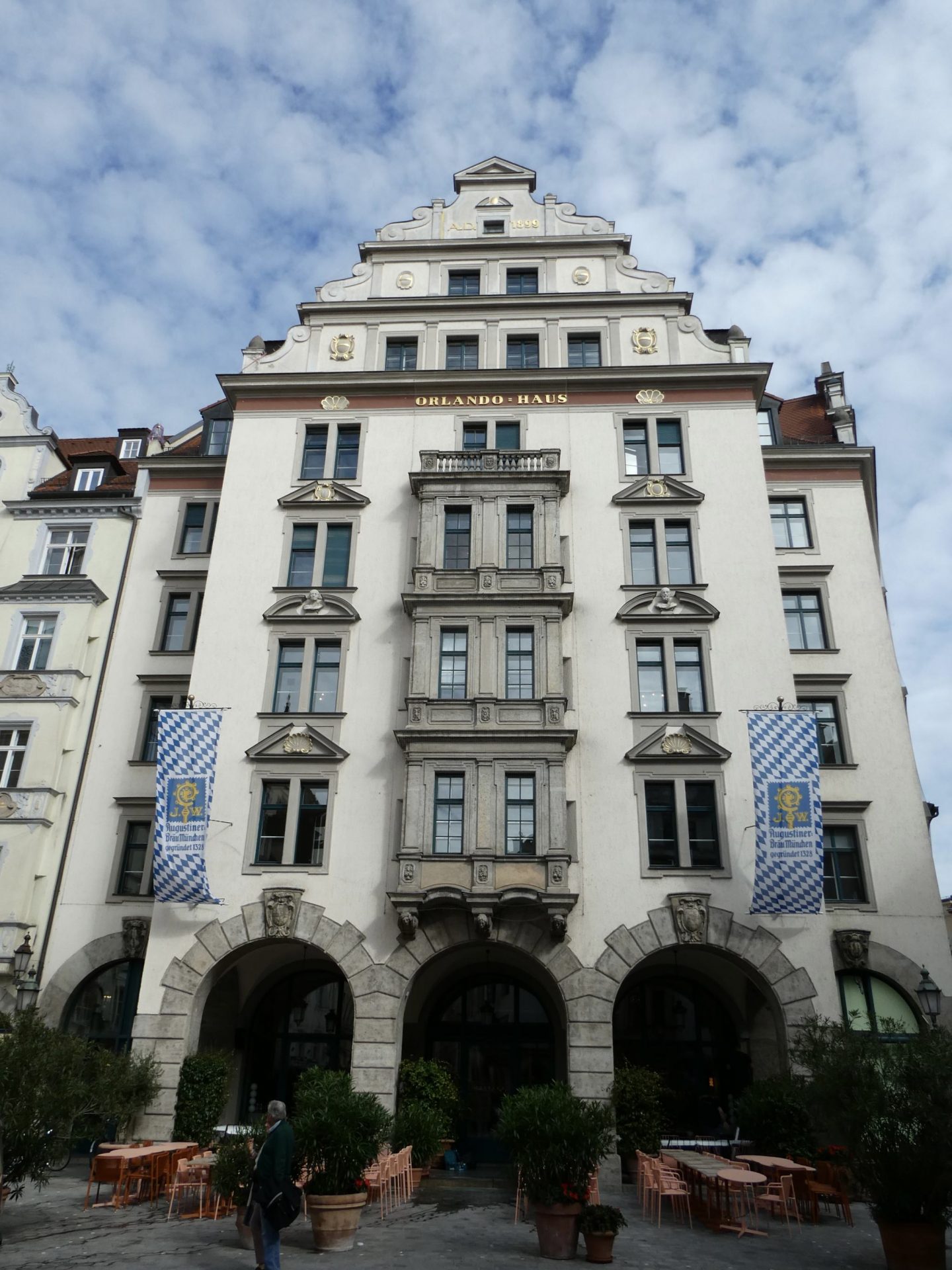 Built in 1589, one of the oldest and the most famous is the Hofbrauhaus. 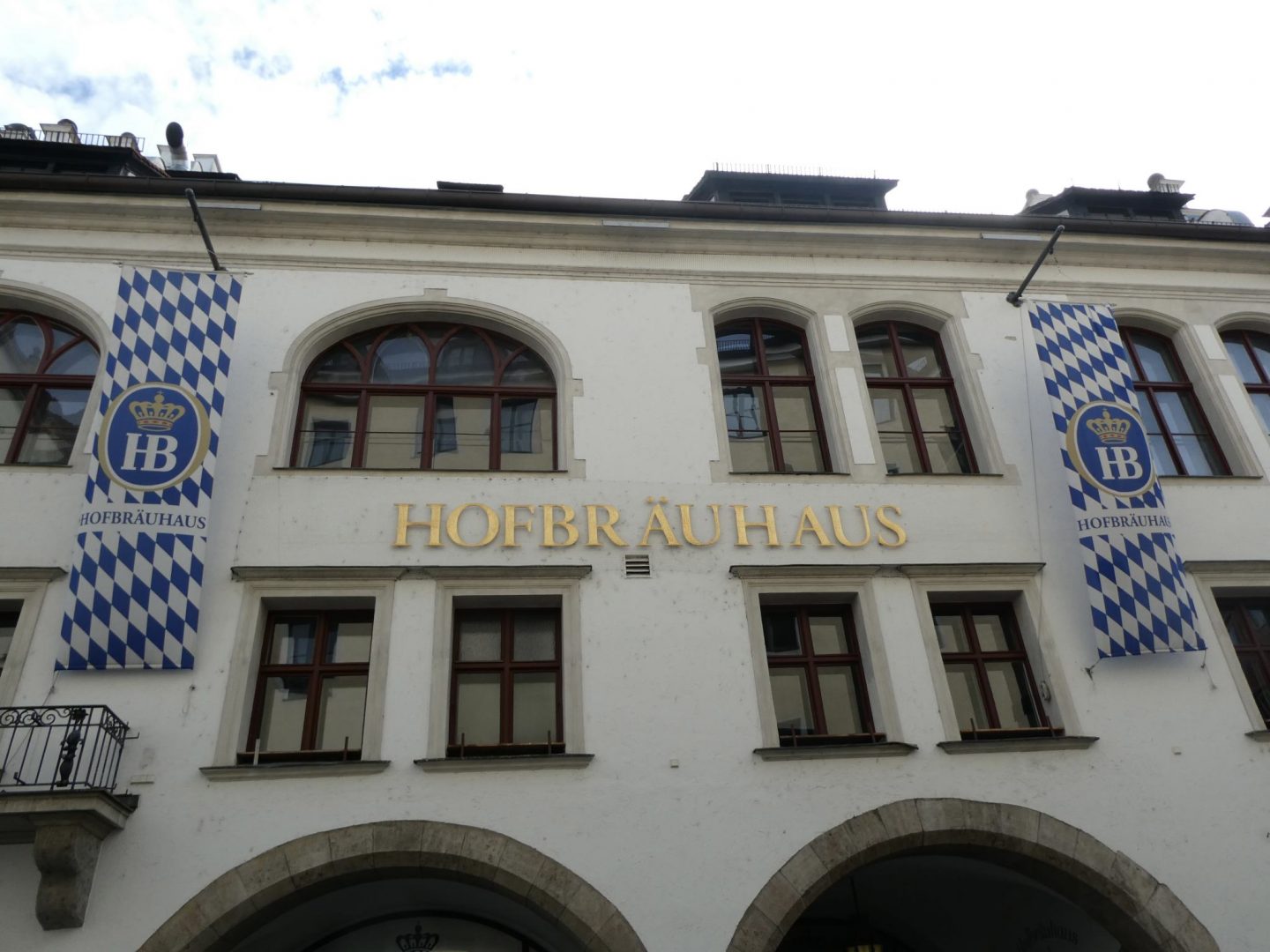 Mozart lived around the block and claimed to have written his opera Idomeneo after a few libations there.  In the years just before WWI, Lenin lived in Munich and is said to have been a regular.  In 1919, the Munich Communist government set up headquarters in the beer hall.  In February 1920, the National Socialists held their first gathering in one of the meeting rooms. 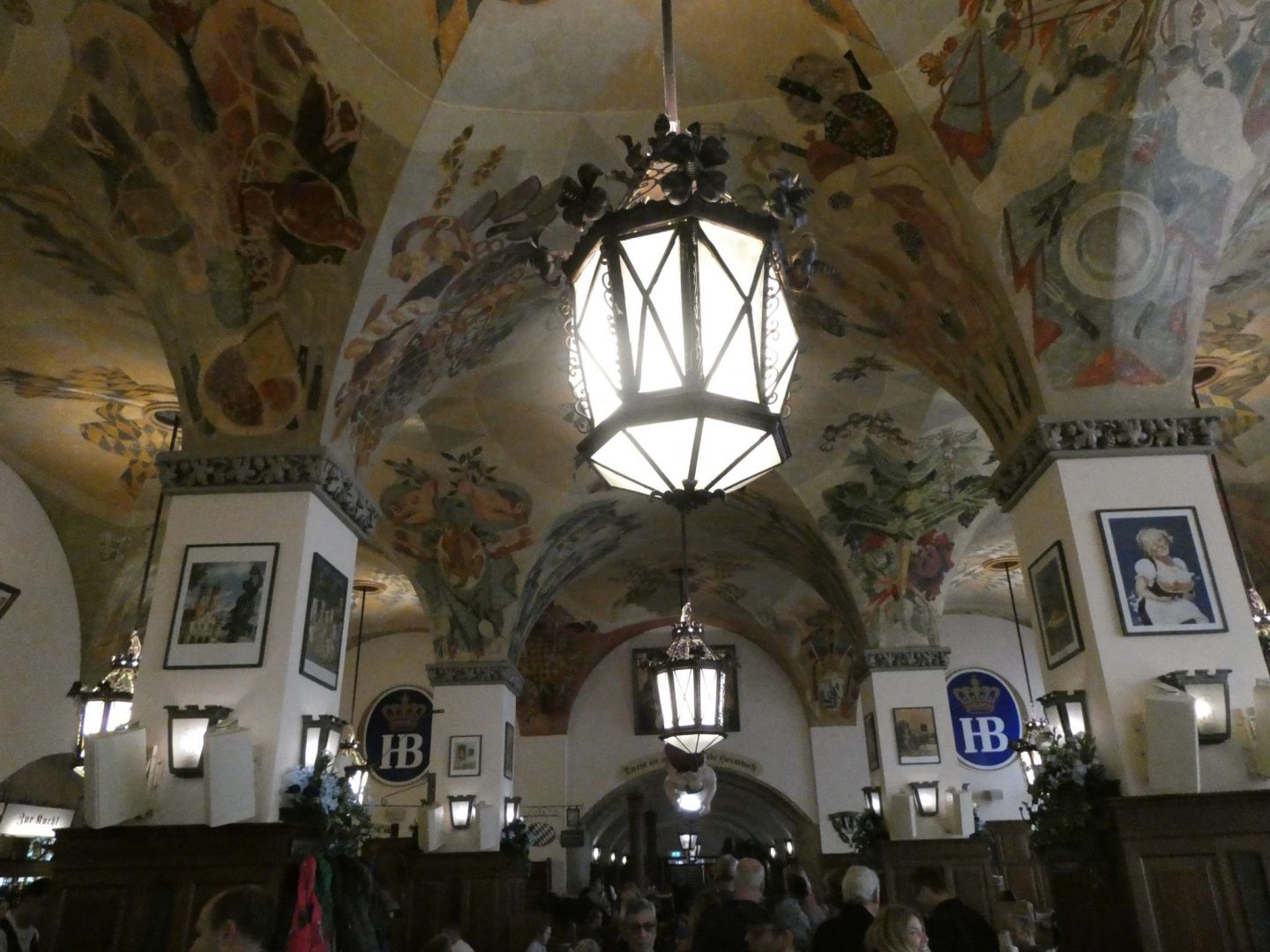 There’s always a band in those curious leather lederhosen flashing some leg and belting out traditional Bavarian songs.  Wilhelm Gabriel’s 1935 homage to beer sculling is on frequent rotation.  Oktoberfesters everywhere will recognise the words, “In Munich there’s a hofbrauhaus – one, two, down the hatch….” 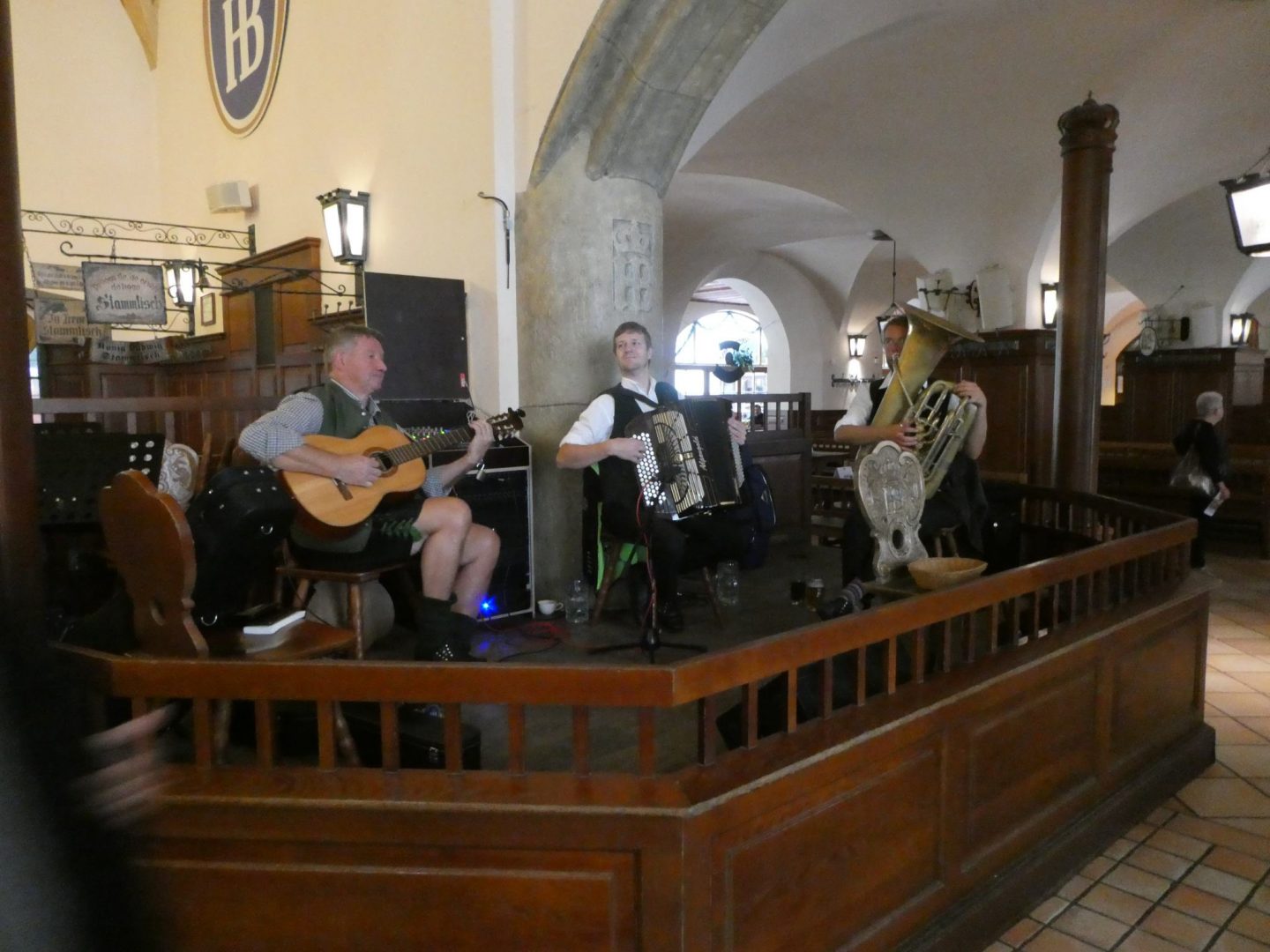 The food’s pretty good considering it’s a major tourist spot.  And the beer, well, you can taste why it’s been popular for over 500 years.

From Munich we also did a few trips out of town.  Two relating to the Nazi era shine a light on that dark history and are well worth it for the comprehensive information presented.

Dachau is really now a satellite suburb of Munich.  A short local train plus bus from central Munich reaches the former Dachau concentration camp site in less than an hour.

It was the first concentration camp in Germany and the only one to have operated for the entire twelve years of Nazi rule.

The camp originally housed political opponents of Hitler.  It was subsequently used for the imprisonment of Jews, Roma gypsies and other ‘undesirables’, and later still for Soviet and other prisoners of war.  It grew to include over 100 sub-camps, mostly as bases for forced labour.

Dachau became the template on which other labour camps were based.  It was not an extermination camp – prisoners destined for that were transported to the death camps, usually Auschwitz.  Even so, 32,000 prisoners died here from violence, starvation, disease and over-work.  And that is only the documented deaths.

For the prisoners, the slogan on the gate, which translates as ‘work sets one free’ was an egregious lie. 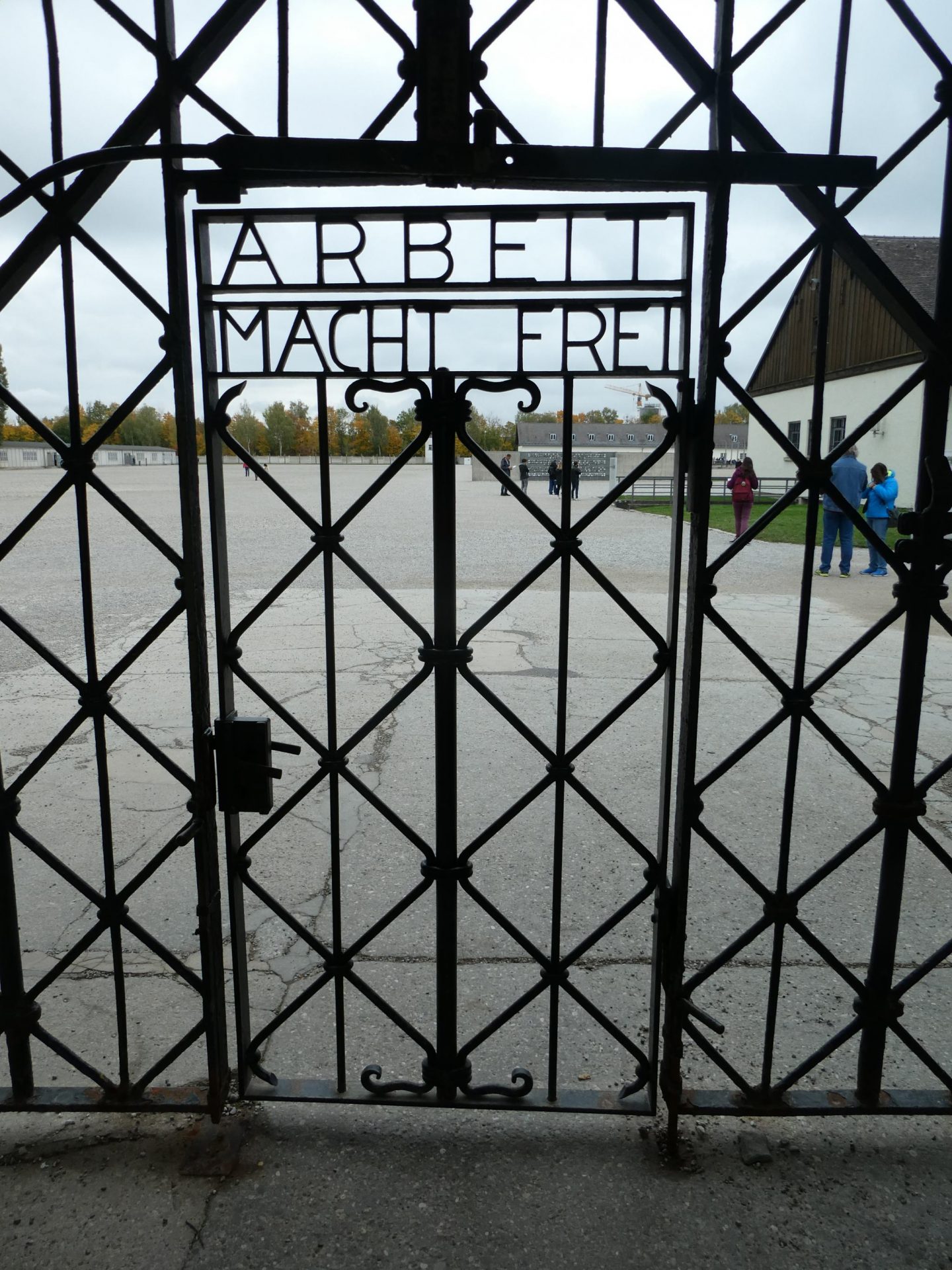 The camp is also infamous as the site of horrific medical experiments on prisoners, including hypothermia experiments and high altitude experiments in supposed attempts to develop ways for soldiers to survive extreme cold and emergency ejection from aircraft respectively.

By an accident of history, the concentration camp was not destroyed after WWII.  In fact, it was used for various purposes including for a long time as emergency housing for displaced persons.  It’s pretty awful to think about the mental trauma this must have caused, but reflects the desperate lack of housing across all of Germany in those post-war years.  It was only closed in 1960 and not long after that, survivors erected a small memorial.  Petitions for preservation of the site as a museum were successful.

Today, two main camp buildings have been restored.  One houses a comprehensive and sobering exhibition on the history of the camp.  The other is a reconstruction showing the living conditions of prisoners across various periods of the camp’s existence. 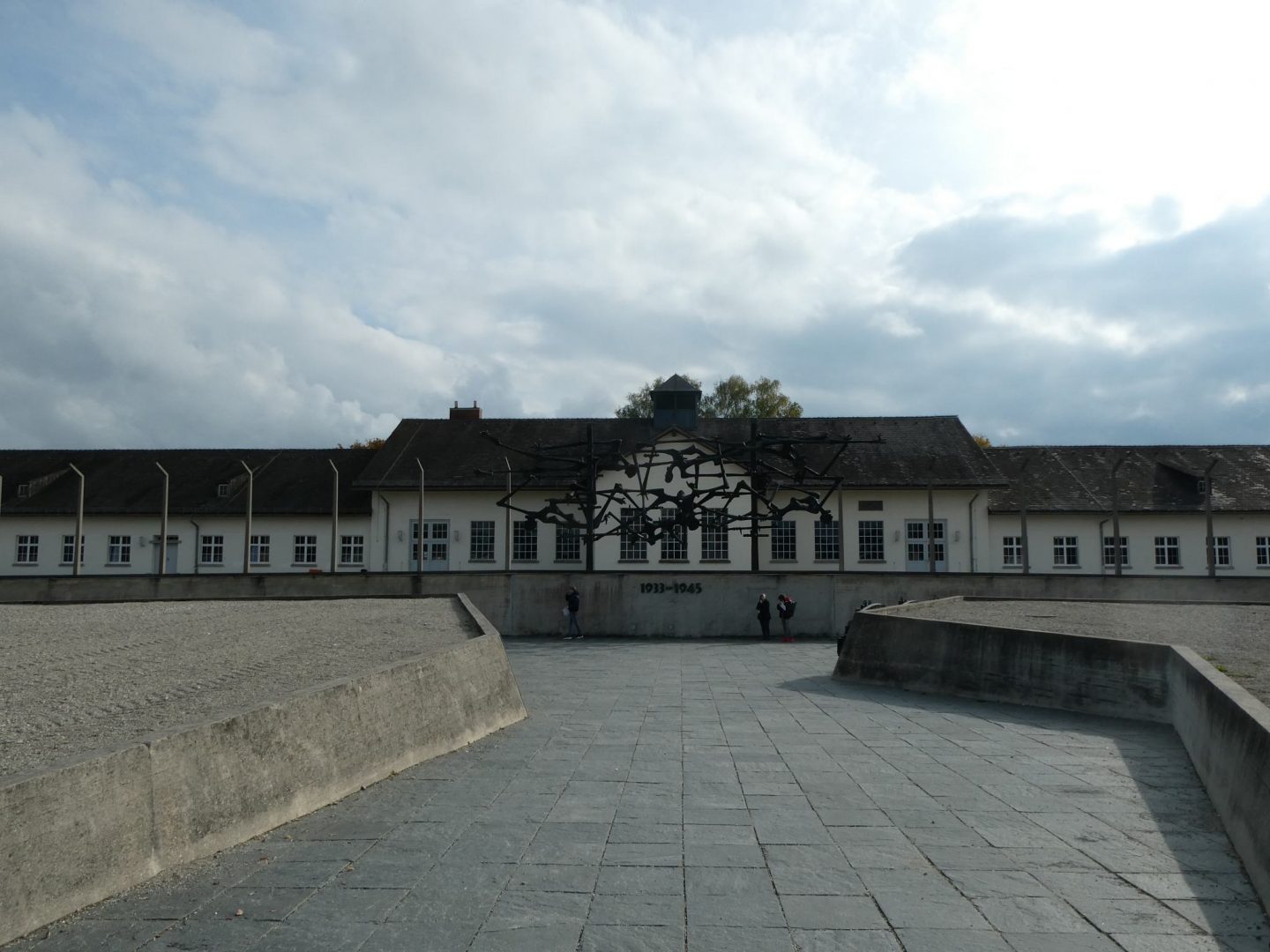 In a far corner, a building houses crematoria for burning deceased prisoners and a small gas chamber which ultimately was not used. 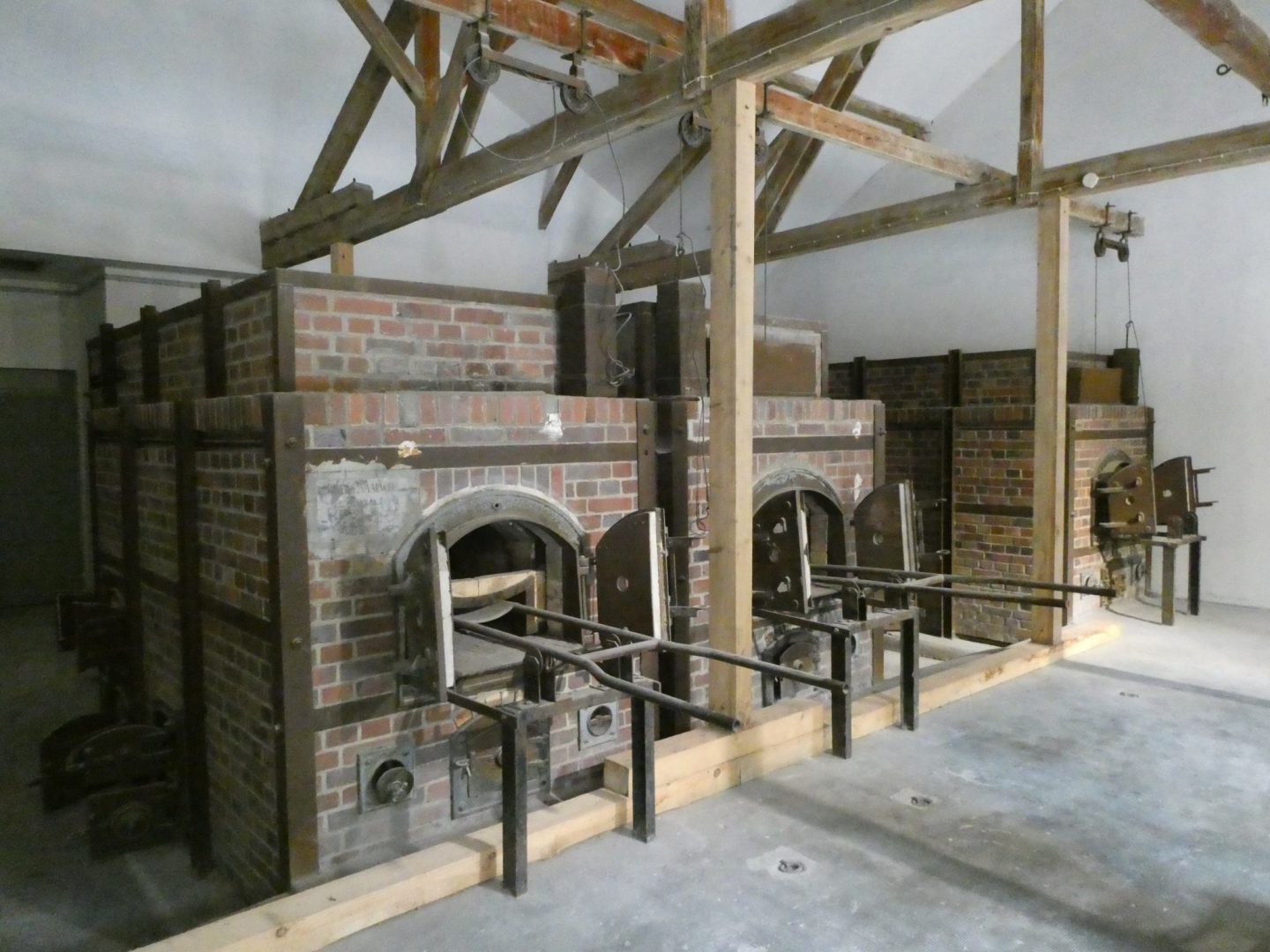 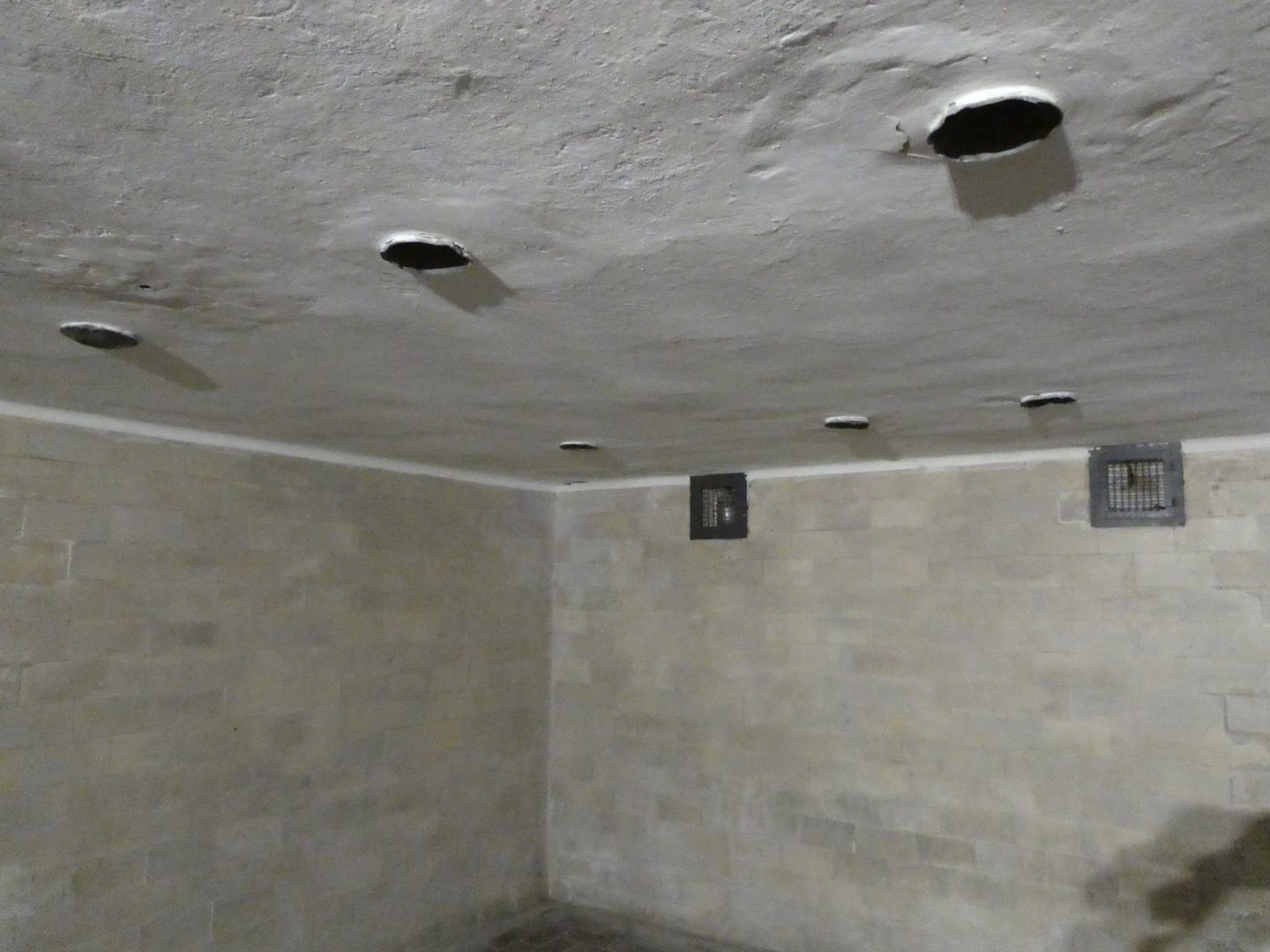 There are also a number of memorials erected by different faiths honouring the dead.

Dachau doesn’t have quite the horror factor of Auschwitz but the museum information is comprehensive and compelling.  Well worth the visit.

For those interested in the National Socialist era in Germany, Nuremberg is famous for two things – the Nazi Party rallies held between 1933 and 1938, and the Nuremberg war crimes trials held after WWII.

At Nuremberg’s Palace of Justice, the court room in which the trials were held has been preserved and there’s a detailed exhibition charting the history, findings and implications of the trials.  As retired lawyers, we found this really interesting. 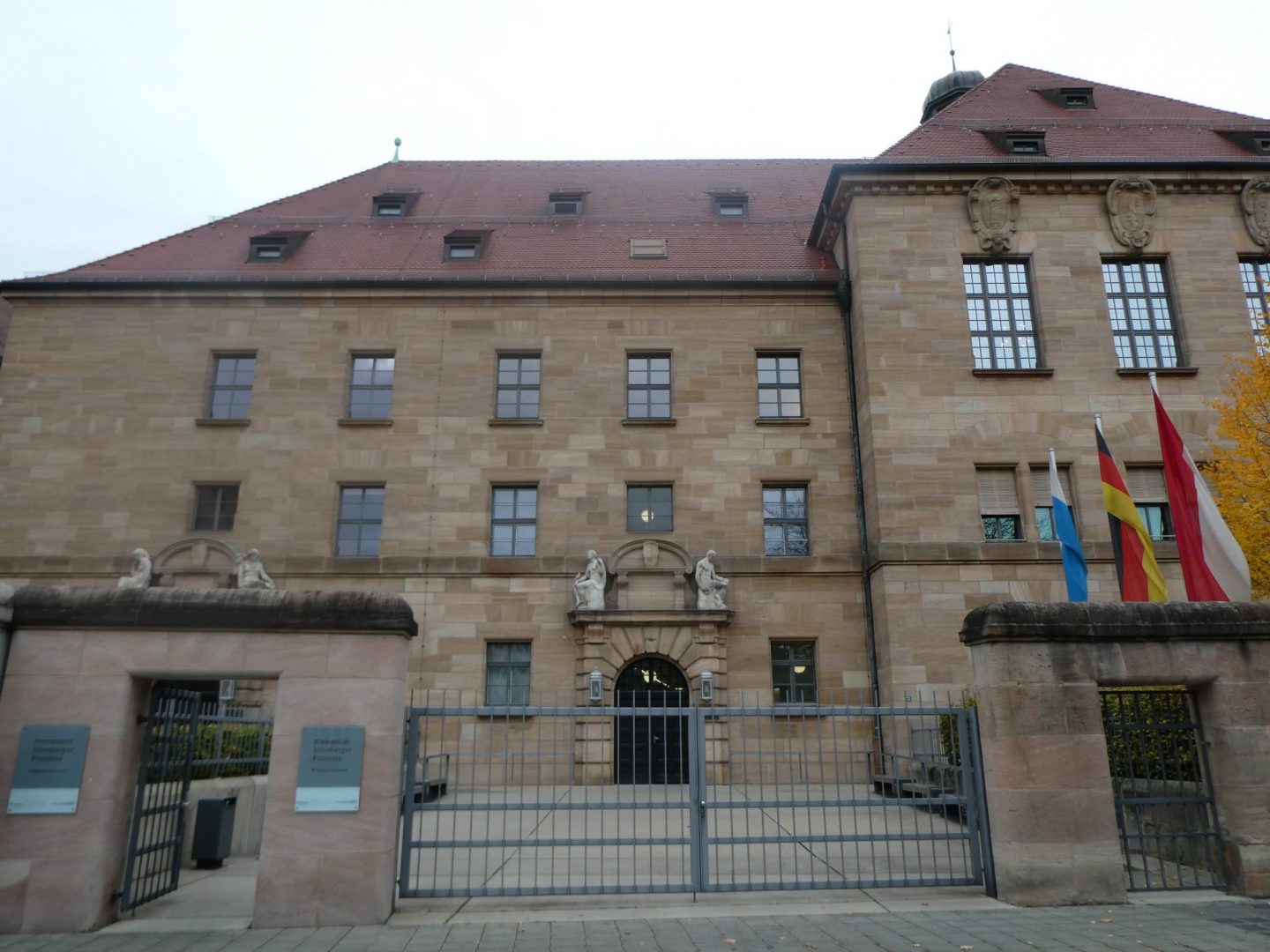 Between November 1945 and October 1946, 22 high and middle level Nazi military and political leaders, and six Nazi organisations were tried on one or more of four charges: conspiracy, crimes against peace, war crimes and crimes against humanity.

The charges, in particular ‘crimes against peace’ were controversial because in large part, they did not formally exist in law before the war.  It’s easy enough to say that ‘everyone ought to know’ mass murder, the slaughter of civilian populations and systematic attempts at genocide are ‘wrong’.  But it is also true that retrospectively making something a criminal offence goes against generally accepted legal norms.

At the end of the day, for a whole range of political and moral reasons, the former position won out.  The court found the charges had a basis in ‘customary international law’ even if no one had ever been brought to justice for it before.

The defendants were largely defiant and unrepentant.  Generally, their defences consisted of arguing ‘you [the Allies] did it too’, and/or ‘I was just following orders’.

The ‘you too’ defence argued that the Allies had themselves engaged in the very behaviour they were now seeking to prosecute.  Allied fire bombing of German industrial cities such as Dresden and submarine attacks on merchant shipping had both caused pre-meditated deaths of civilians.  These actions were cited as examples of the same sort of attacks for which some defendants were being tried.  But as every child is taught, two wrongs don’t make a right.  That defence failed.

The ‘following orders’ defence was argued even by the highest ranking defendants such as Herman Goring, Rudolf Hess and Albert Speer.  Perhaps pre-empting such an argument, the legal framework developed for the trials included Nuremberg Principle IV which states “ the fact that a person acted pursuant to order of his Government or of a superior does not relieve him from responsibility under international law, provided a moral choice was in fact possible to him”.

The Nuremberg Principles went on to form the underlying framework for much of the international law which has since been developed for prosecuting crimes against humanity in the modern era, including Rwanda and the former Yugoslavia.

For anyone interested in the development of international criminal law, this exhibition is compelling.  We spent hours there.

Ordinarily you can also visit the court room where the trials were held.  Surprisingly, until 2020 it was still in use as an everyday court.  Now it’s not, but on the day we visited it was closed, ironically for a legal conference.  But there’s a viewing window from above so we still got a peek at what it was like. 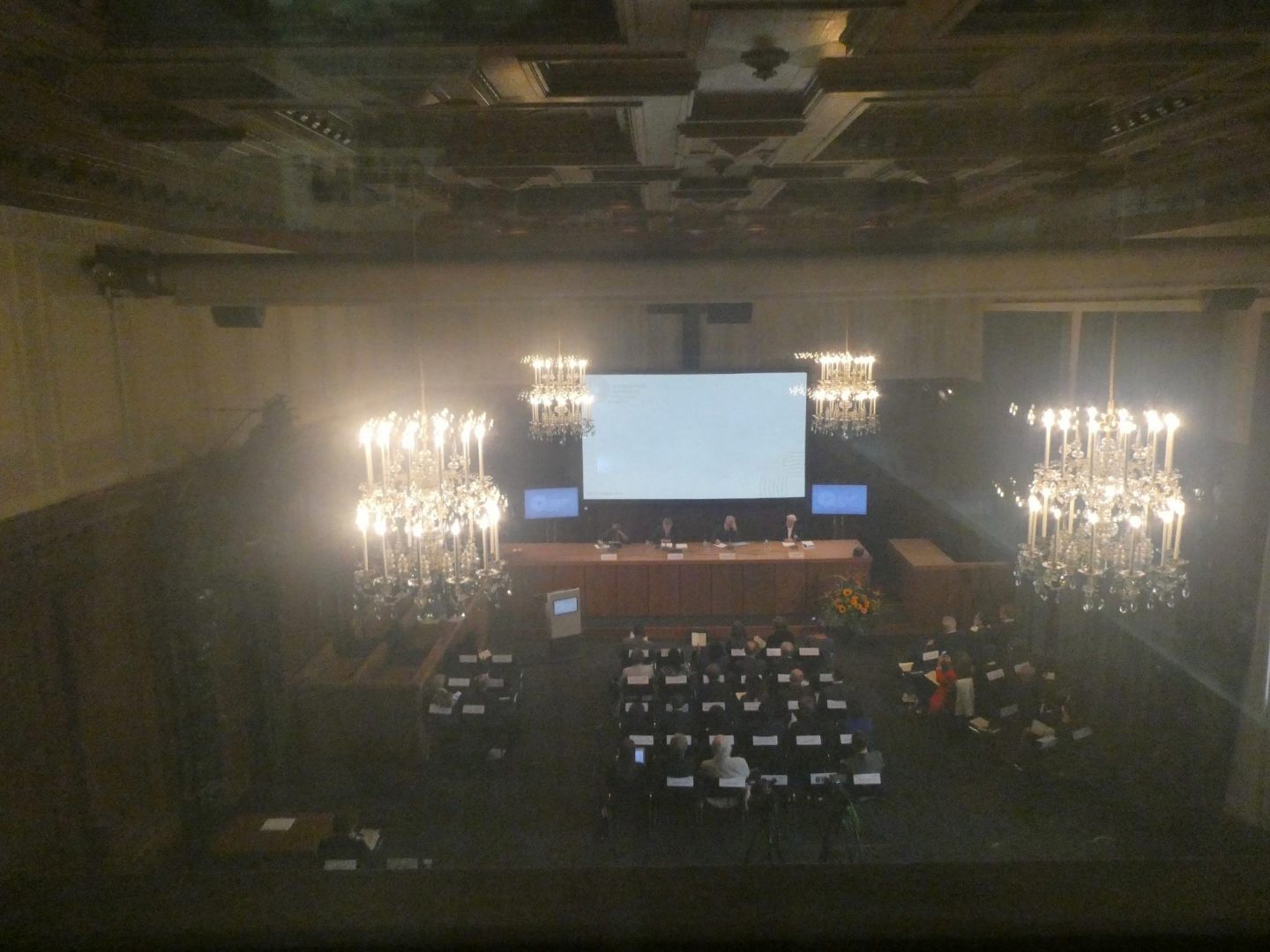 We promise that’s the end of the grim stuff.  Our next trip was to Neuschwanstein Castle, and that warrants a post all of its own.