When Julie backpacked in Europe in the early 1990s, visiting Neuschwanstein Castle was on every traveller’s wish list.  But it was hard to reach on public transport and wildly expensive for a backpacker budget.  She didn’t go, and suffered a major case of regret afterwards.

Almost 30 years has brought a certain amount of maturity – some might say ‘not much’ – and skipping it was no longer a tragic loss.  But we were in Munich, so why not close that one out.

From Munich we caught a regional train to Fussen, then a bus to the village of Hohenschwangau.  In 1832, King Maximilian II built a summer and hunting castle here on the hill overlooking the town. 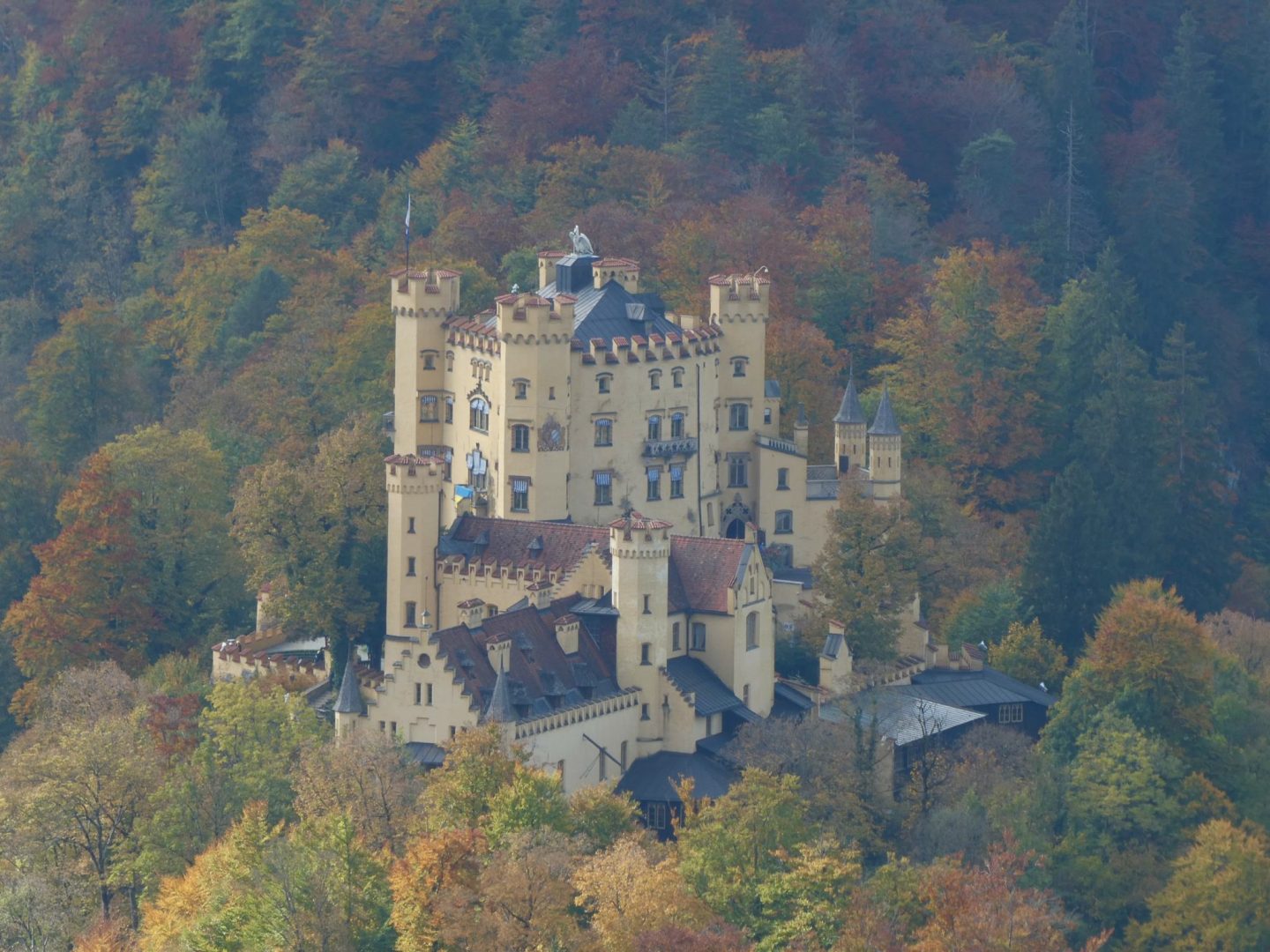 His son, Ludwig spent his summers here and is said to have become much enamoured of the area.  But perhaps he wasn’t so keen on Hohenschwangau Castle.  On his father’s death, Ludwig became King Ludwig II of Bavaria and commissioned a new castle.  Perched on a granite peak even higher up, it has a 360 degree panoramic view of the countryside and down to the village and Hohenschwangau Castle.

Ludwig certainly understood that in real estate, location is everything.  Here’s the view from the balcony of Neuschwanstein Castle.  Ludwig’s castle is in a far superior position to his father’s little pile. 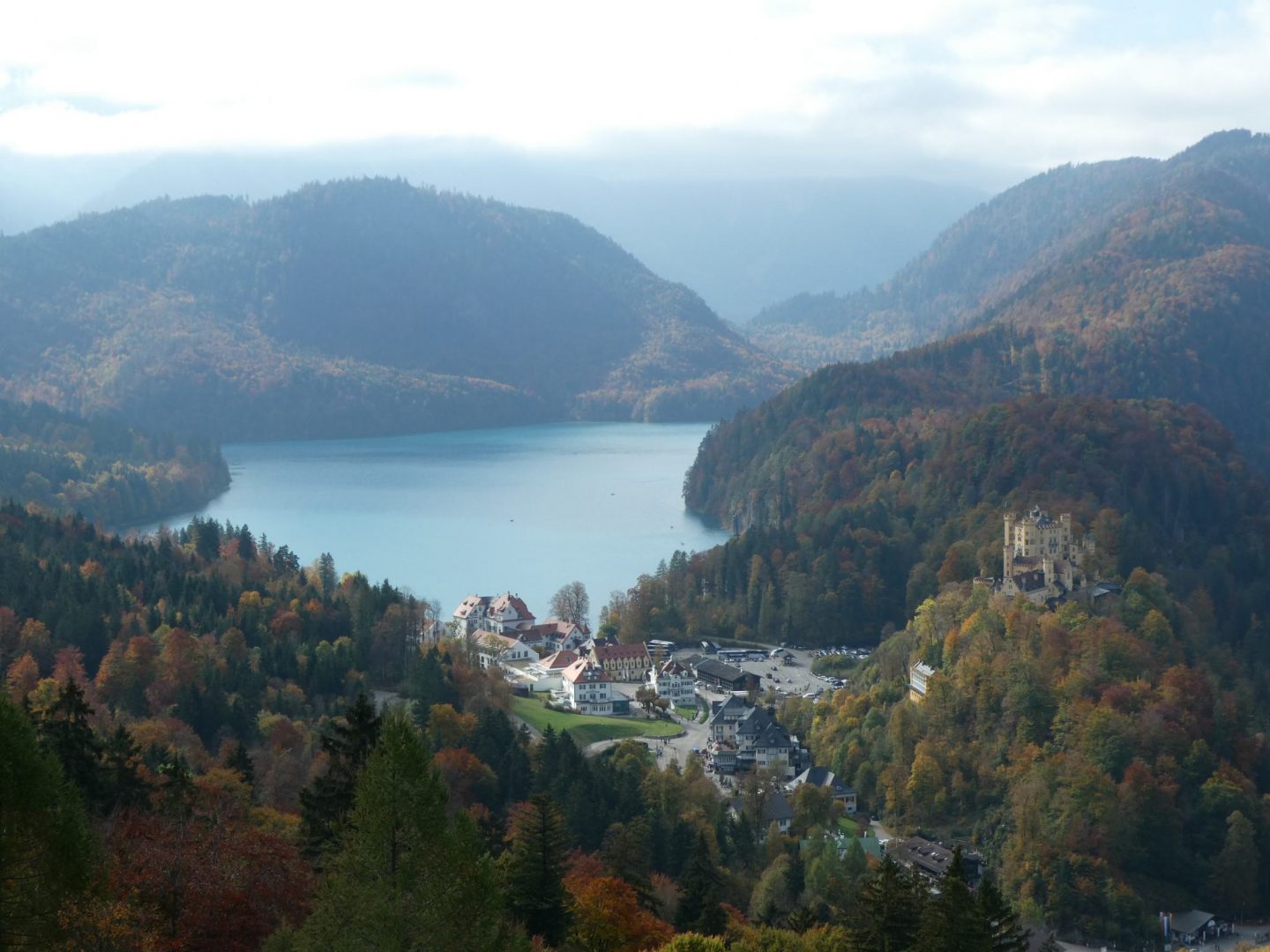 And when you arrive in the village by bus, Neuschwanstein is the first thing you see, not Hohenschwangau.  Just look up. 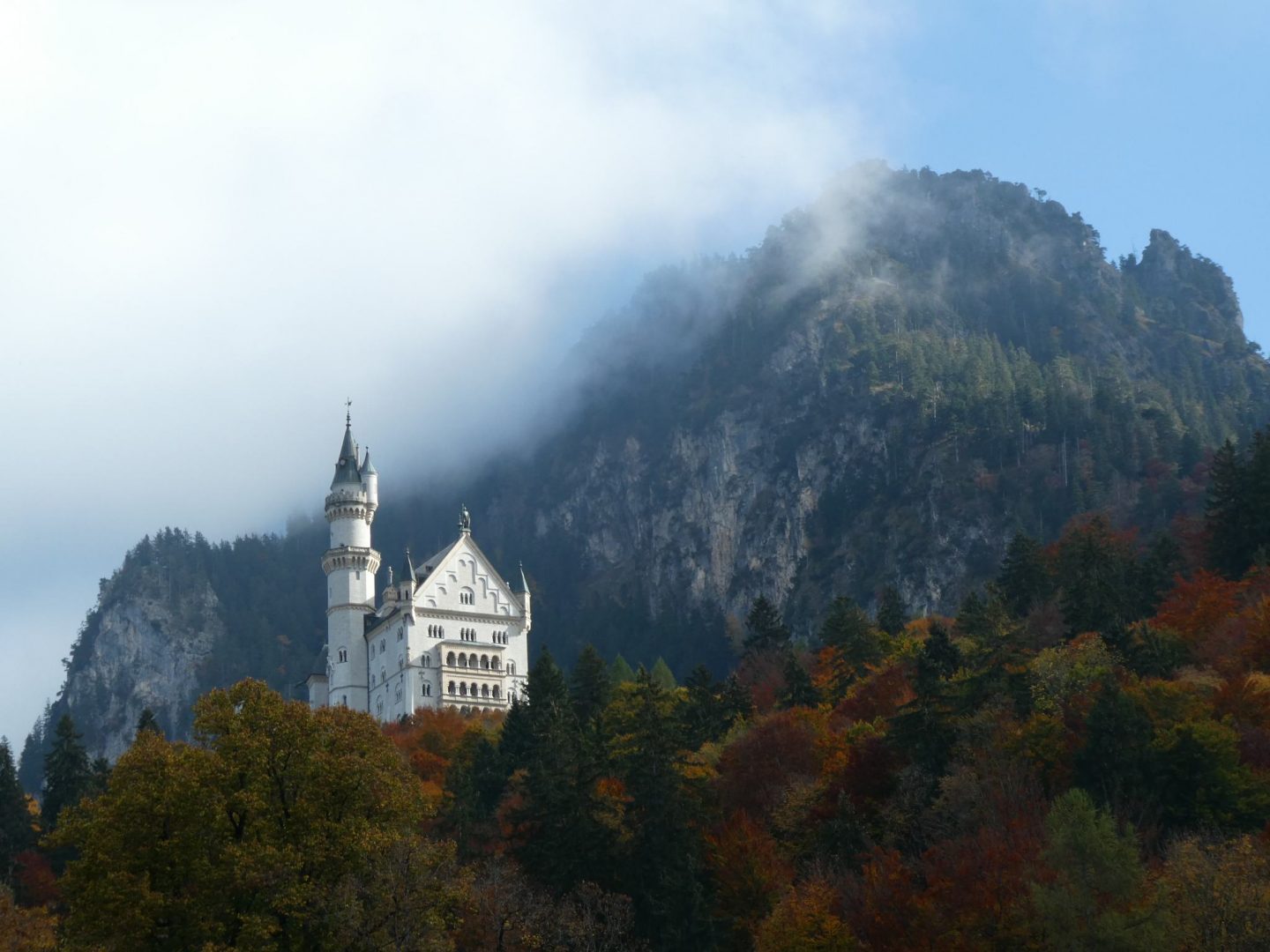 Ludwig intended his new castle to be a personal retreat rather than a traditional royal court.  As he became increasingly disconnected from reality, he sought to create a fantasy world where he imagined himself a medieval knight.

Construction began in 1869 but he kept changing and embellishing the plans. Costs spiralled out of control.  He took up residence in 1884 but the project was nowhere near completion.   Increasingly reliant on credit, the project threatened to bankrupt him, yet he persisted.

In early 1886 he requested the Bavarian government advance him funds for the continuing work.  His request was refused.  The government decided he had to go.  It declared Ludwig incompetent and had him forcibly moved to Berg Castle under the supervision of a psychiatrist.  Three days later both were dead, drowned under mysterious circumstances in a nearby lake.  It was officially declared suicide but no one is really sure.  He had lived at Neuschwanstein for only 172 days.

The castle was never finished.  When Bavaria became a republic in 1918, the property fell to the state.  It survived both world wars because its location was isolated and of no military importance.

Nowadays some 1.5 million people come each year, making it one of the most visited tourist attractions in Europe.  That’s largely because it is the template for Disney’s Sleeping Beauty Castle.

From the village, you can walk, catch a bus or be taken by horse drawn carriage up to the castle.  The best view of it is actually from this bridge on a nearby ravine. 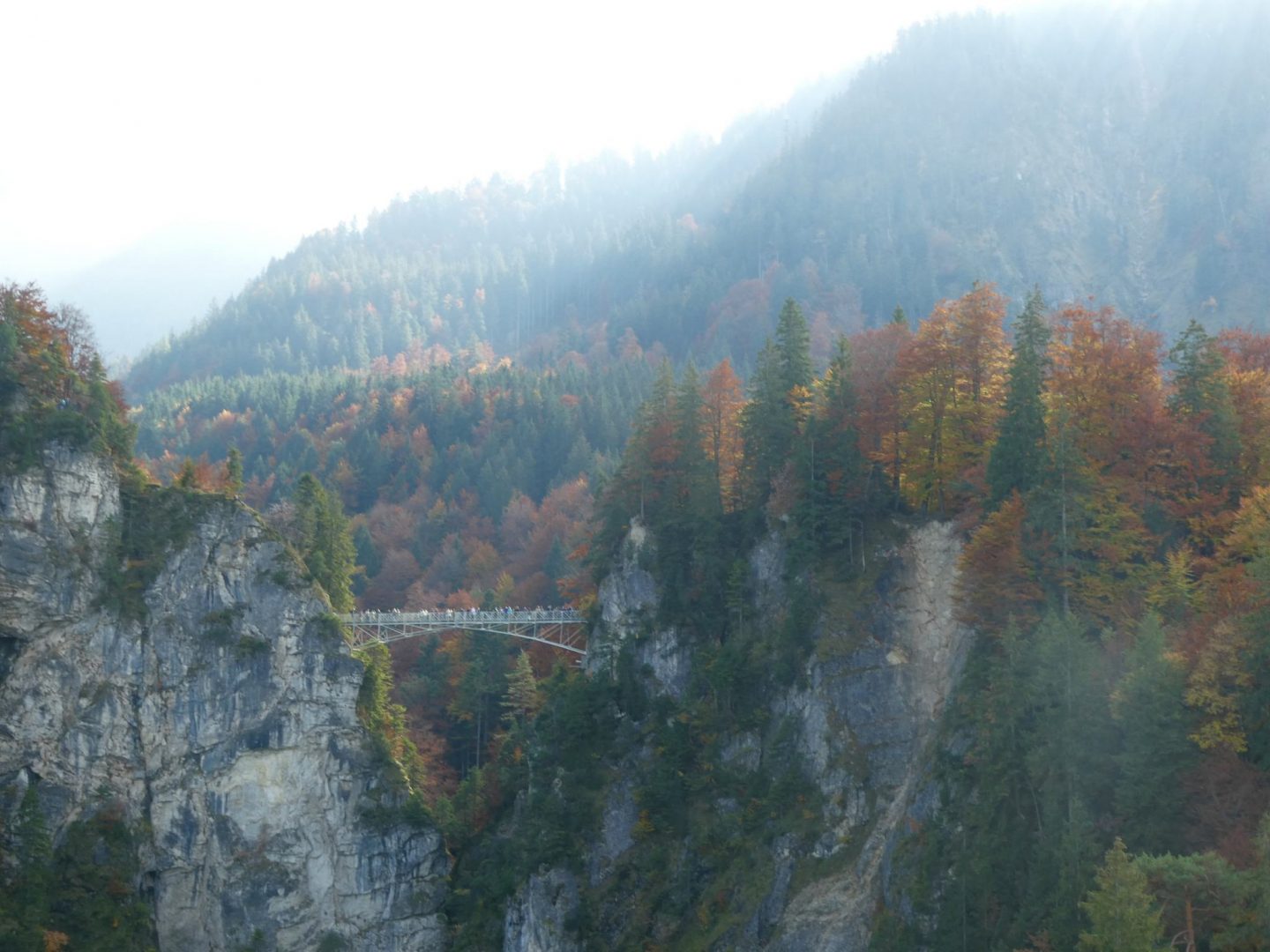 From the bridge, it is indeed clearly identifiable as ‘the Disney castle’.  It looked exceptional emerging out of the autumn tinged forest. 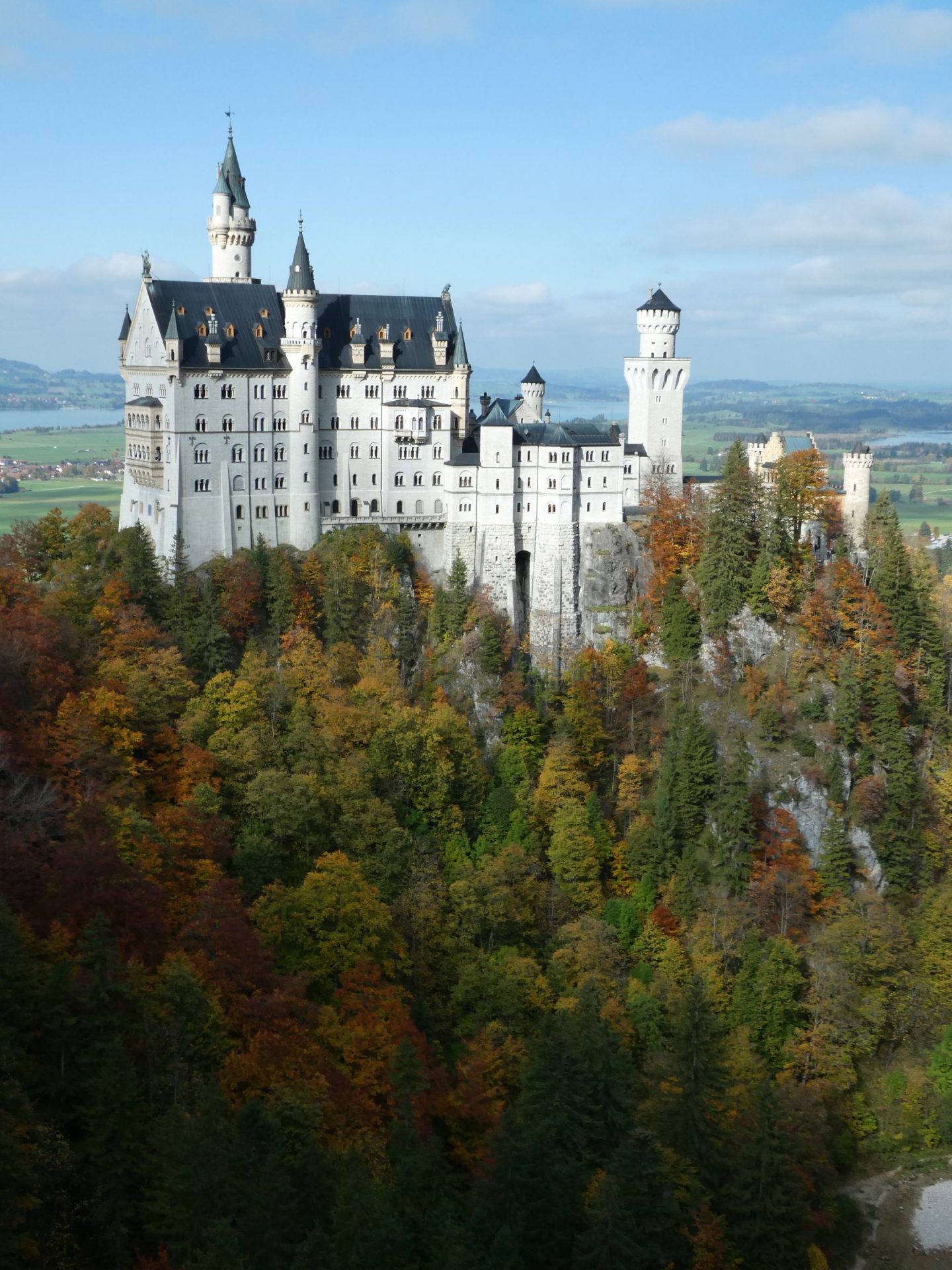 Then from the bridge it’s a short uphill walk to the castle entrance.

Visiting the castle is by pre-booked timed ticket in a guided group of about 30 people at a time.  No photography is allowed inside.  This makes it a surprisingly enjoyable visit.  Unlike Versailles Palace and many others, there are no selfie-stick wielding mobs jostling for a photo of themselves in front of a royal treasure.  No one blocking the flow of people passing through while pointlessly waiting for a photo clear of other tourists.

An extensive restoration of the interiors has been ongoing since 2017 but it’s still possible to see all of the rooms finished in Ludwig’s time.  His bedroom, throne room and the singers’ hall are as lavish as any palace in Europe.  He may have been a borderline hermit, but he wanted the best of everything for himself.

Yes, it’s excessively popular.  And kitschy.  But it’s now on the ‘done’ list.