Yerevan is one of the oldest continuously inhabited cities in the world.  It’s fortunes have waxed and waned over the centuries since it was first established in about 3,200 BCE.  At the beginning of the 20th century it was little more than a provincial backwater. The population swelled with Armenians displaced during the Armenian Genocide – more on that later – and increased again during Soviet rule.

Russian born architect and town planner Alexander Temanyan is considered the ‘father of the city’ and is responsible for much of its architectural style as the city expanded rapidly in the 1920s and 30s.

At the heart of it is Republic Square.  Named Lenin Square during the Soviet era, Temanyan surrounded the square – which is actually a circle – with grand Soviet style neoclassical edifices. 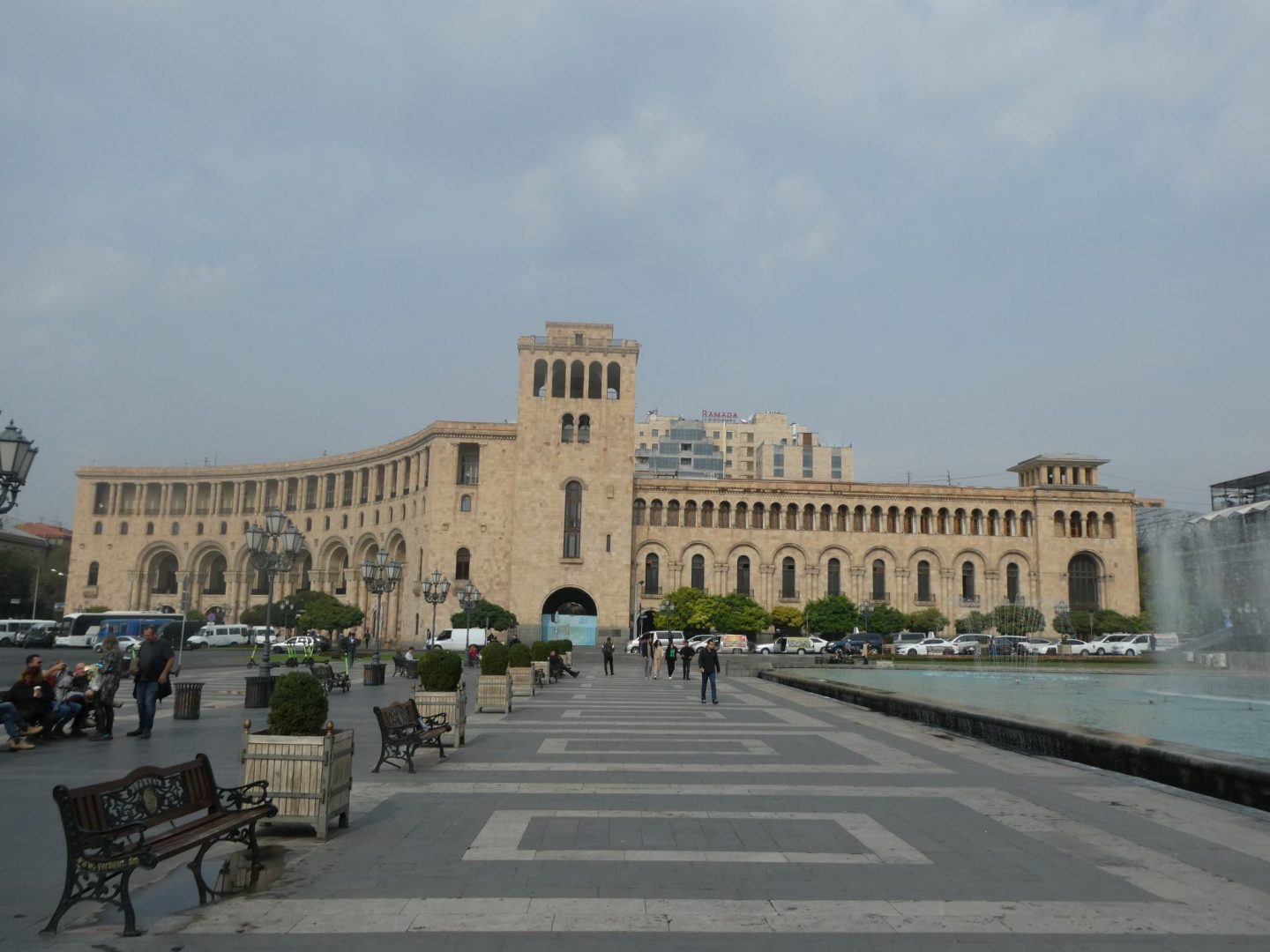 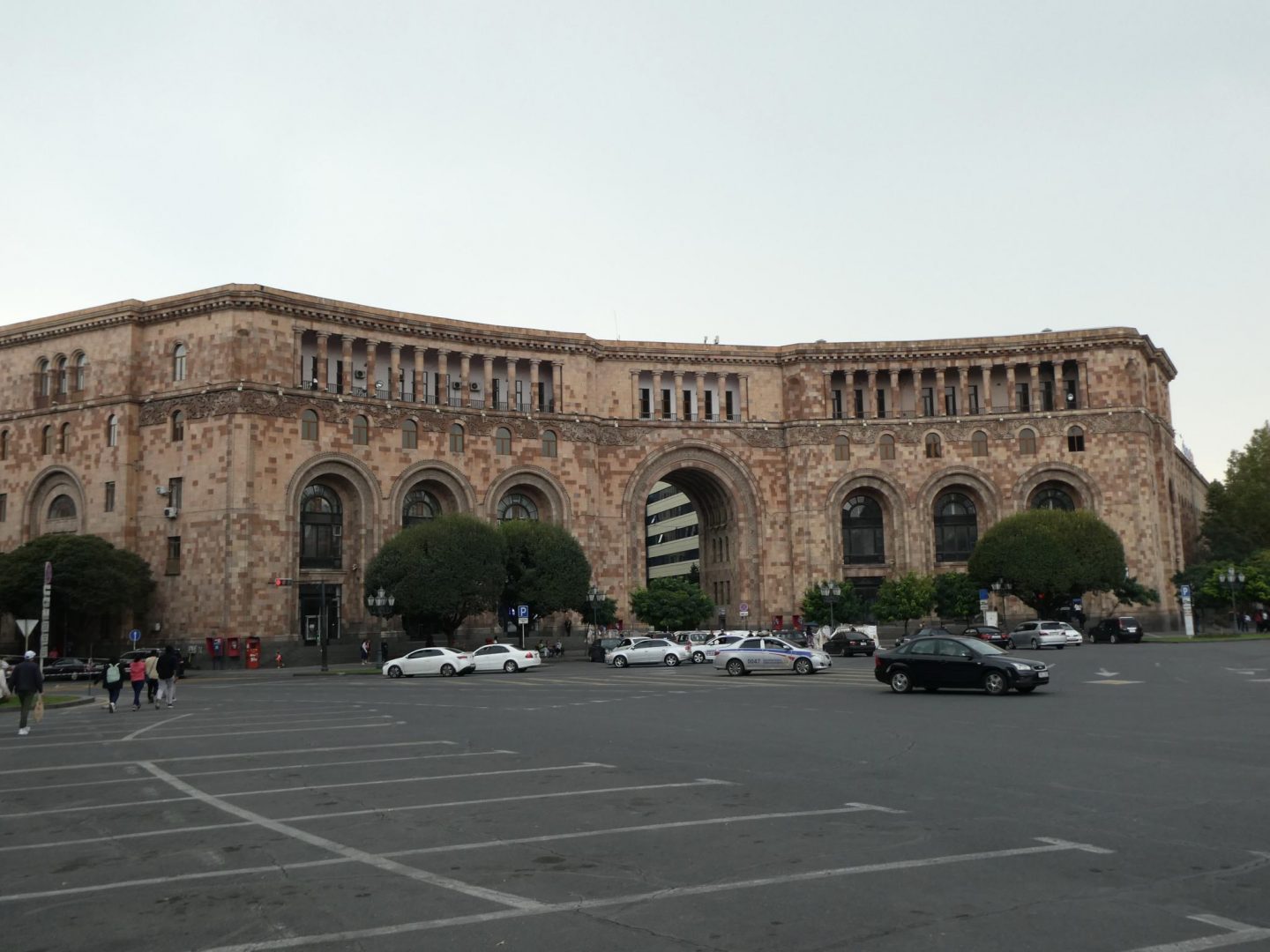 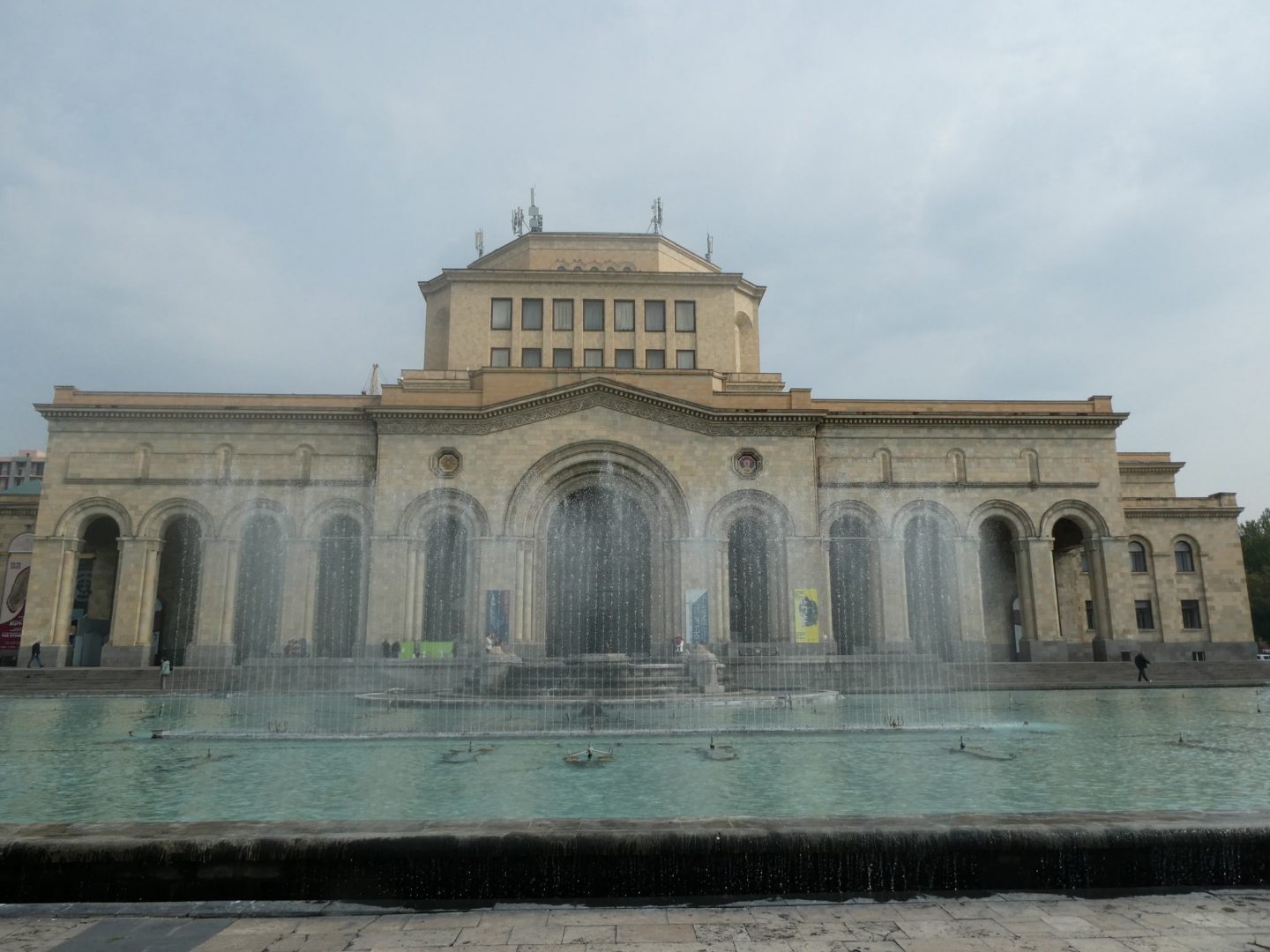 In the centre, fountains dance at night and underneath there’s a bunker built later during the Cold War to protect city officials in the event of a nuclear attack.  Sadly, the bunker is not open to visitors.

The buiding above is the National Museum of Armenia which houses a treasure trove of Bronze Age artefacts and – drumroll, please – the world’s oldest leather shoe found in a cave called Areni-1 in southern Armenia in 2008.  Readers may remember we saw a copy of what was claimed to be the world’s oldest shoe in the Bata Museum in Toronto.  That was 5,300 year old Otzi Man’s shoe found in the Austrian alps.  Evidently, he’s been pipped at the post.  Radiocarbon dating confirms the Areni-1 shoe is 5,500 years old.  And here is the real thing. 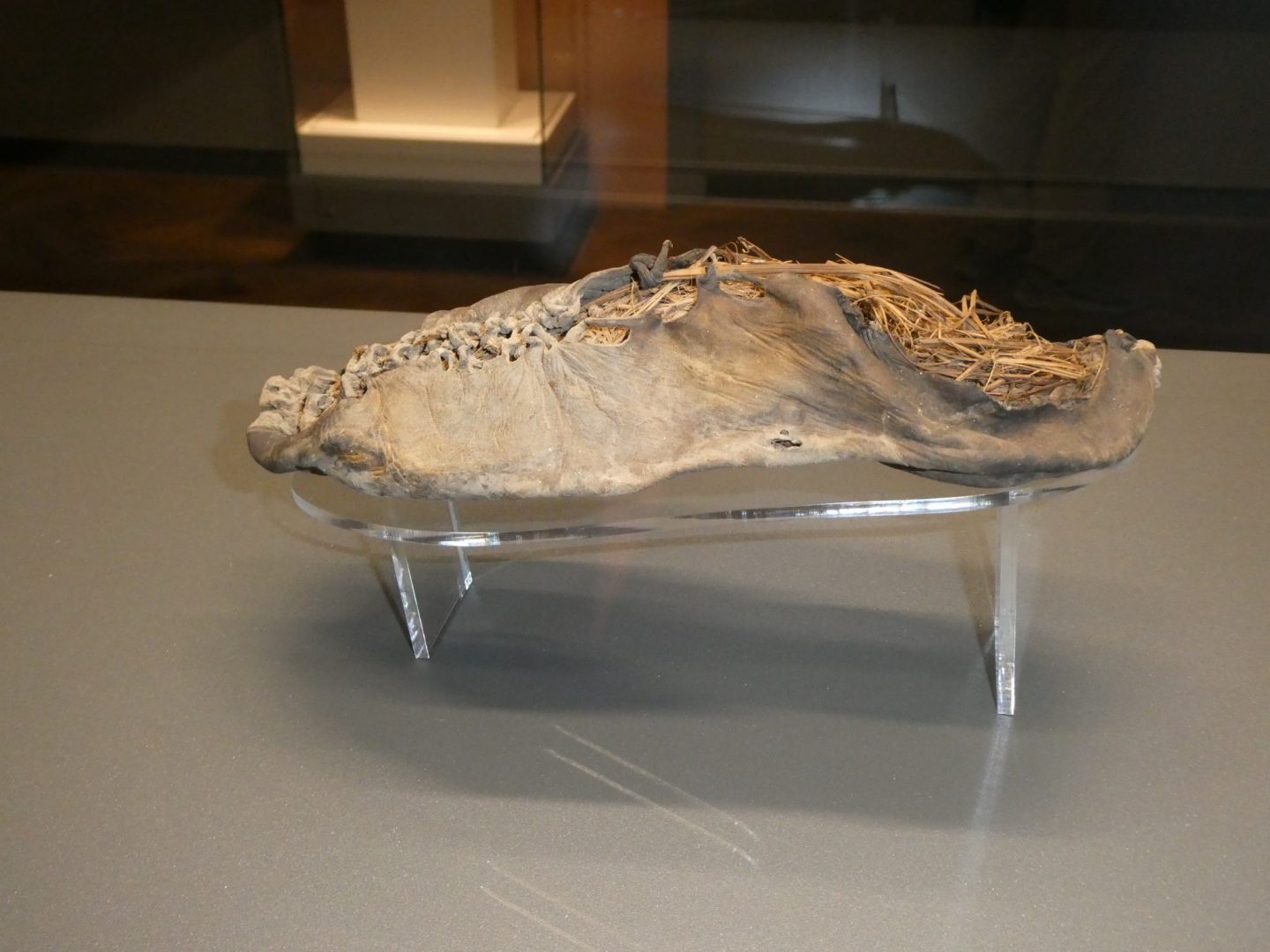 Temanyan is also responsible for such ‘beauties’ as the Opera House, although it wasn’t finished until many years after his death. 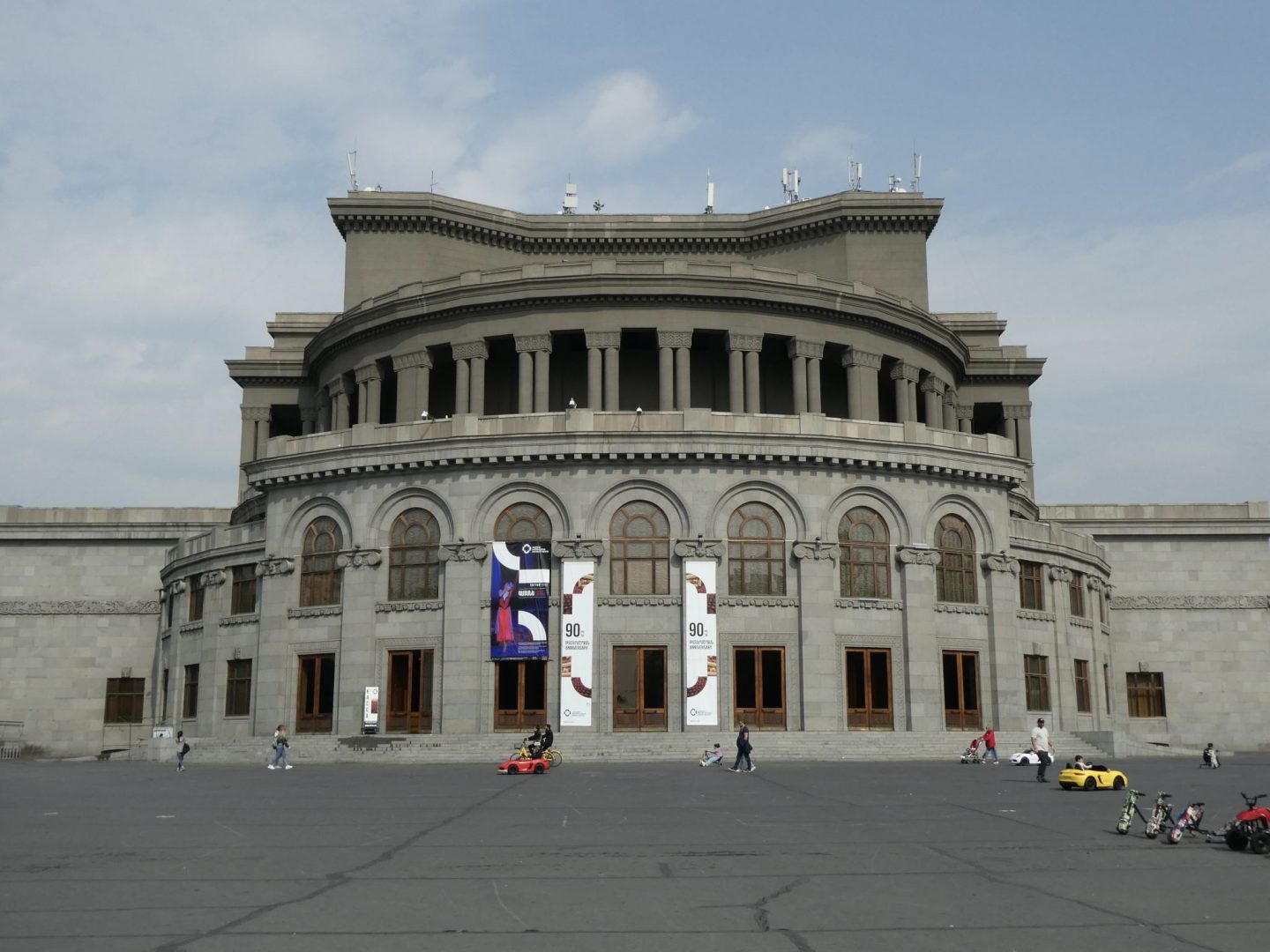 The man himself is honoured with a statue almost as grandiose as his designs.  He looks like some evil maniac plotting the end of the world. 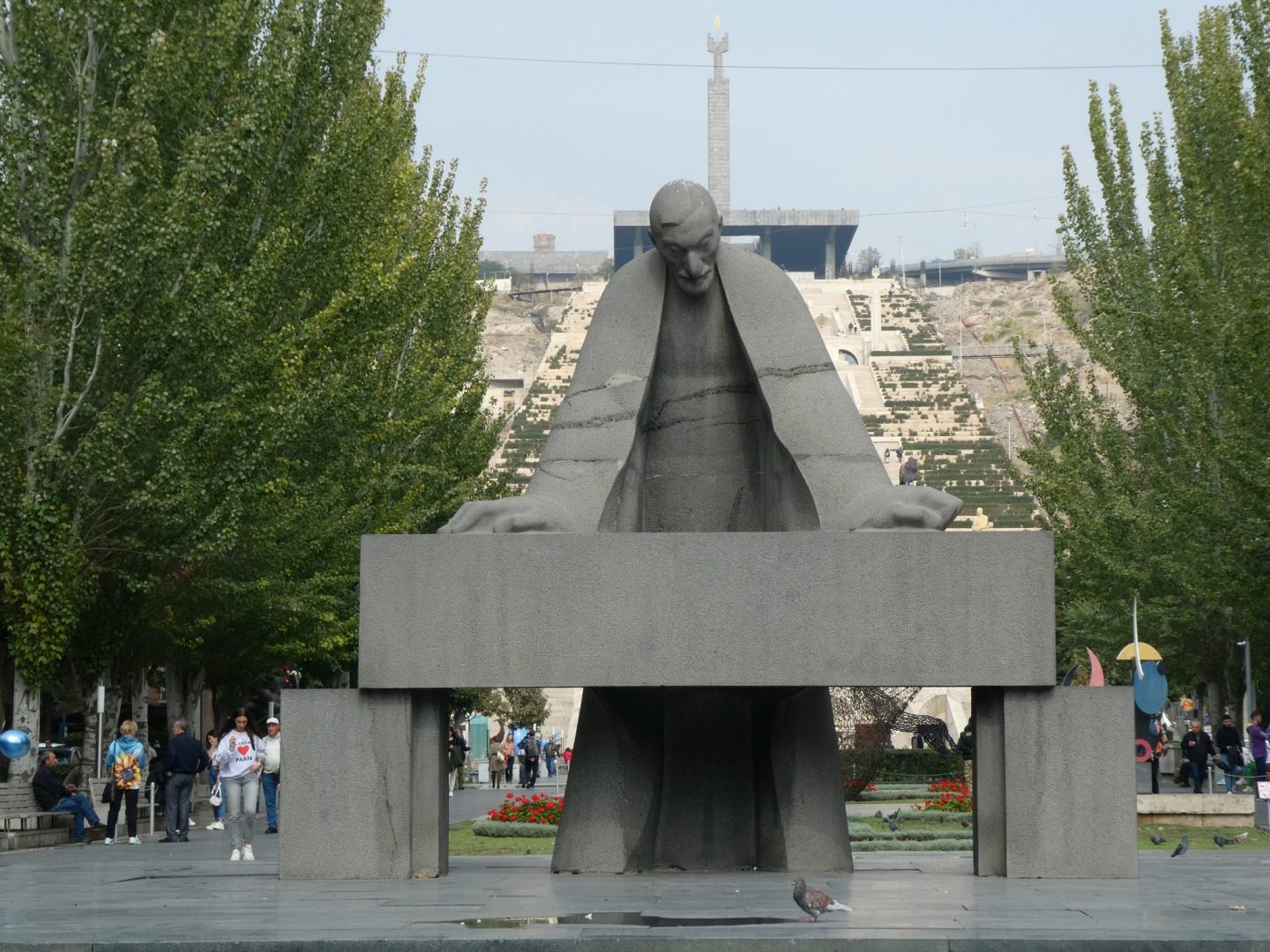 Which is what it feels like being in the Yerevan traffic.  The end of the world, that is.  Temanyan designed the city centre as a grid system with the main boulevards pointing toward Mount Ararat.   It doesn’t work well.  Outside of a very limited area, the system is nothing like a grid, and in any case the city is split into two parts on either side of a canyon, so getting from A to B anywhere outside the centre is extremely circuitous.

We suppose he can’t be blamed for failing to foresee the explosive increase in cars which has occurred since his time, but the traffic is either total gridlock or dodgem car driving by a mad mix of ancient Ladas, clapped out old Mercs and a few ultra modern motors.

Behind the statue of Temanyan  is a sculpture garden with an eclectic range of offerings.

Remember the A-maze-ing Laughter sculpture from our post on Vancouver?  Here is another from the same artist, Yue Min-jing. 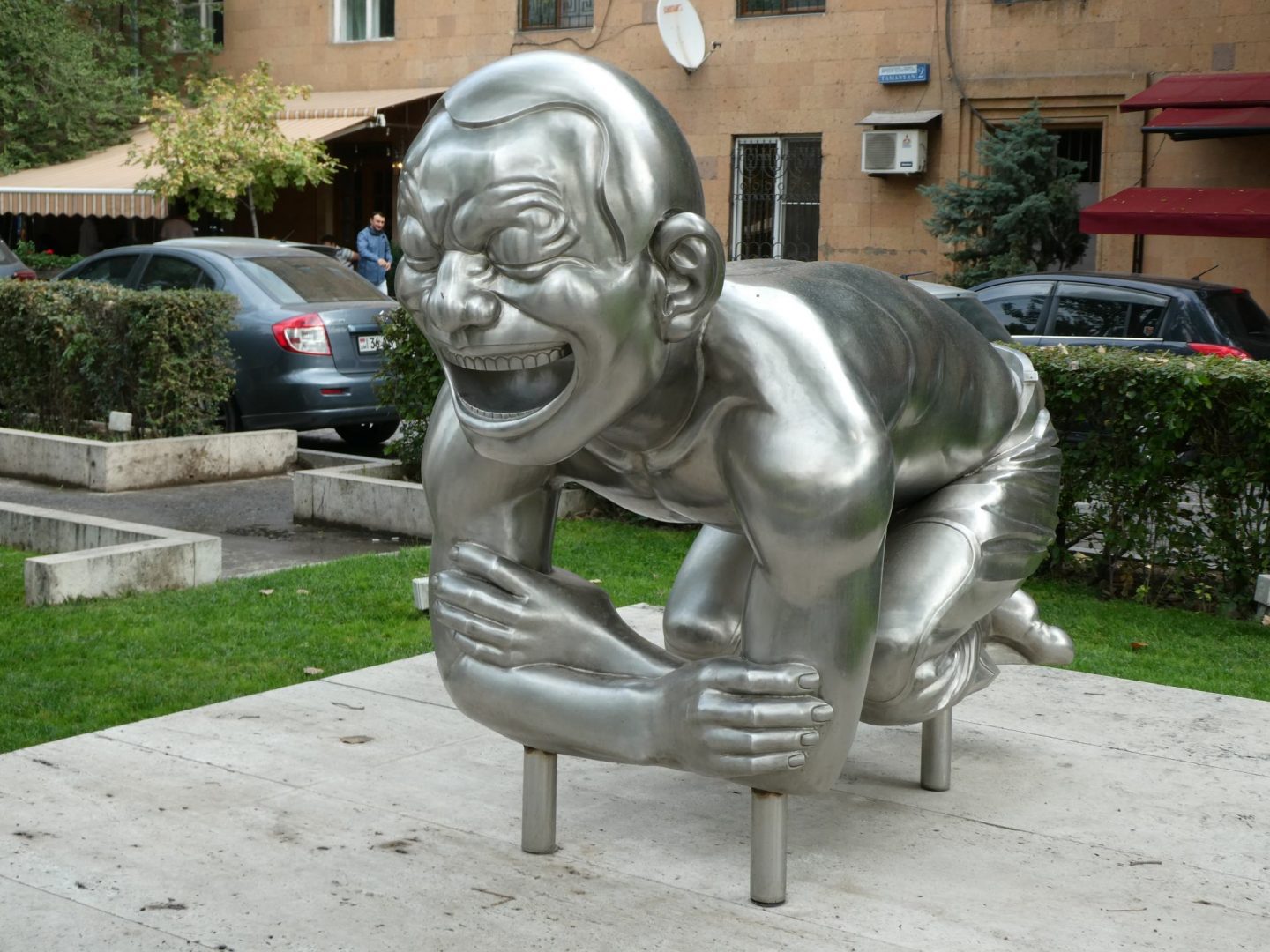 Colombian sculptor Fernando Botero is a favourite of Julie’s.  We saw a gallery of his work in Colombia in 2019 (see our Bogotá post for details).  There’s three of his works here, including Cat. 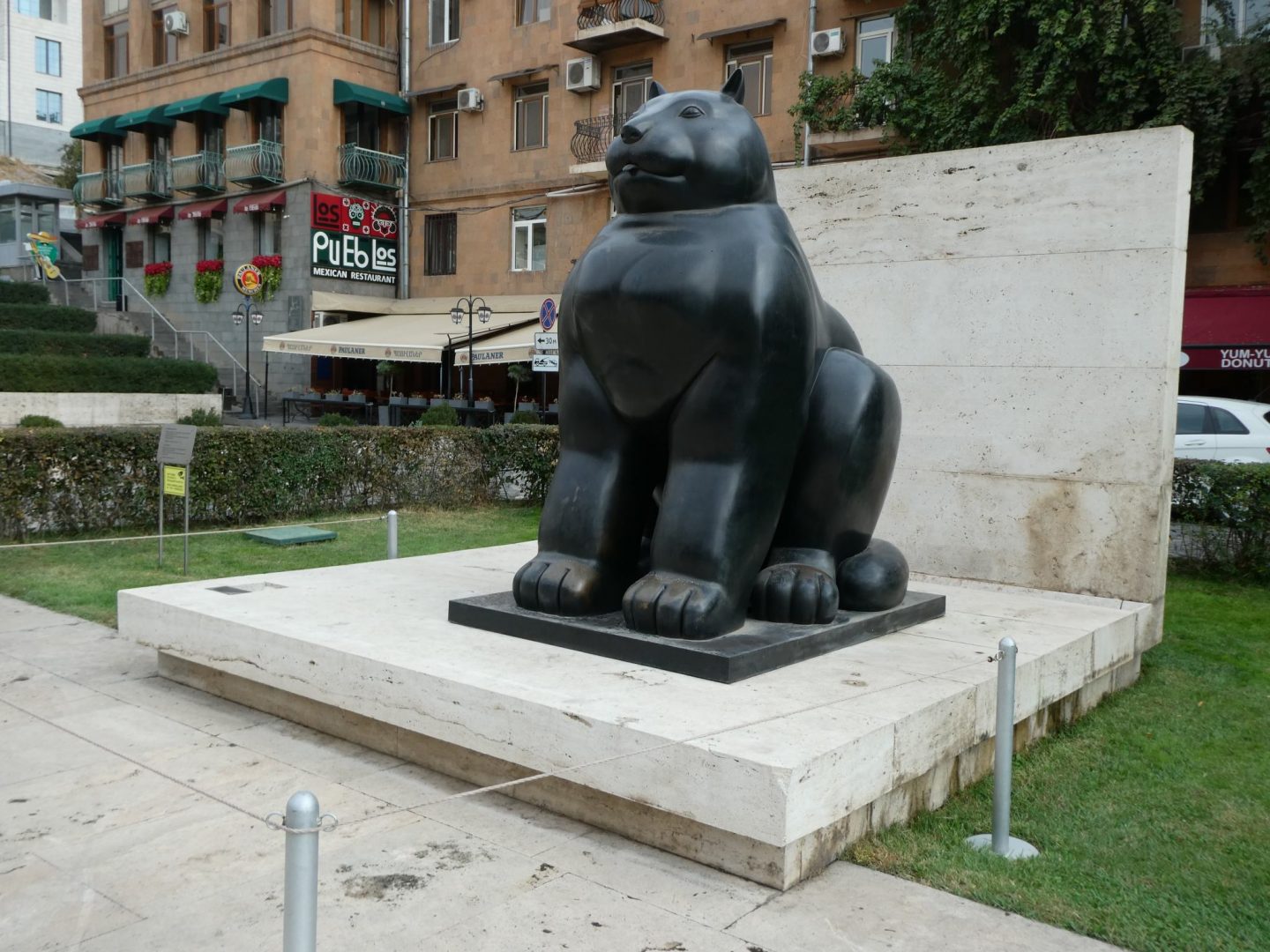 This one by New Zealand artist Peter Woytuk is hard to miss. 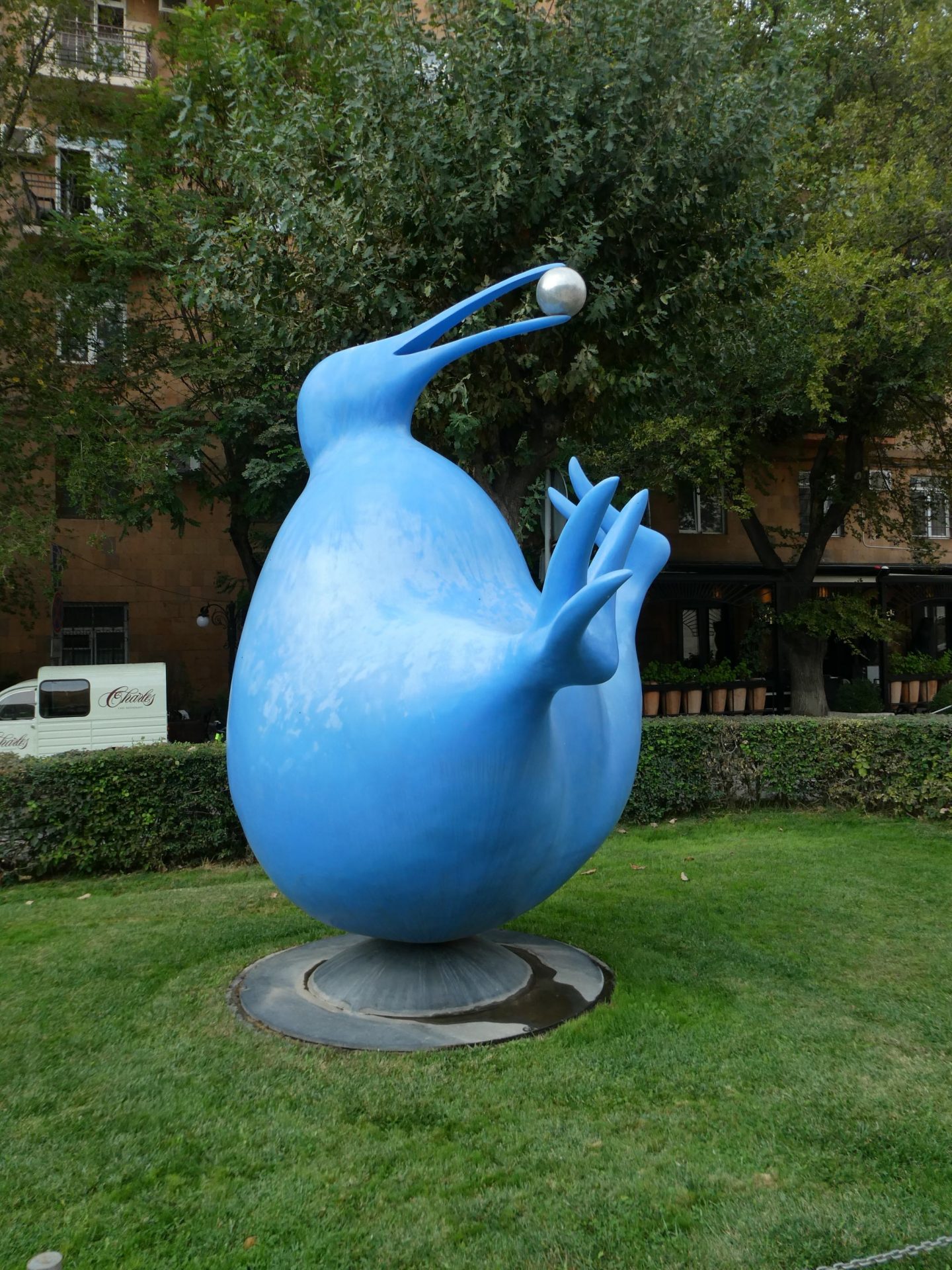 And we rather liked this one of a pirate.  Look closely – he has two peg legs, two hook hands, two eye patches and two parrots.  Not sure what it all means, but it’s somehow clever. 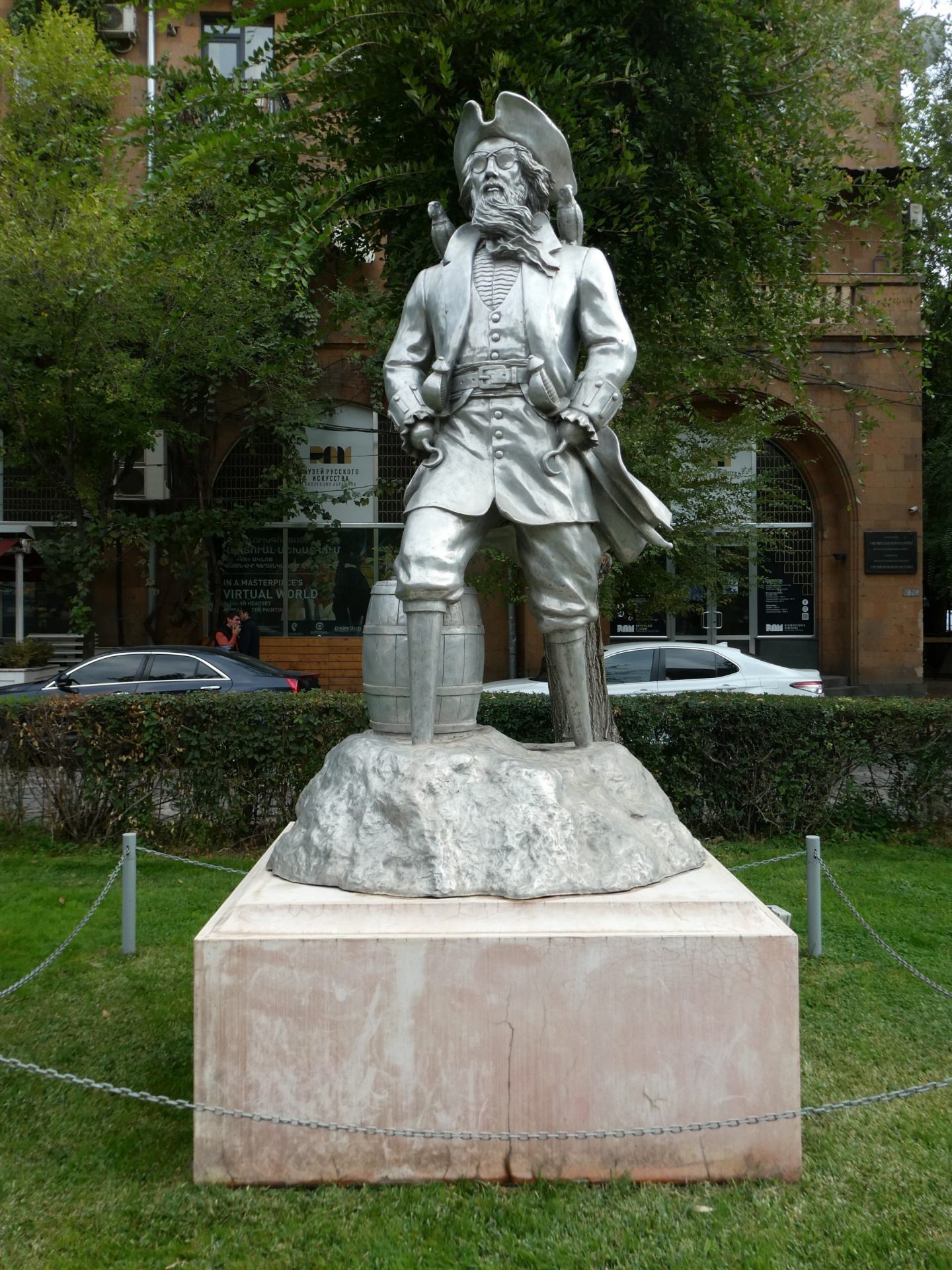 Scattered around the city there are plenty of other reminders of the late Soviet era.  Like several other former SSRs we’ve visited, Yerevan’s metro system is deep underground so it could double as a bunker in the event of nuclear attack.  And the stations are Soviet classics. 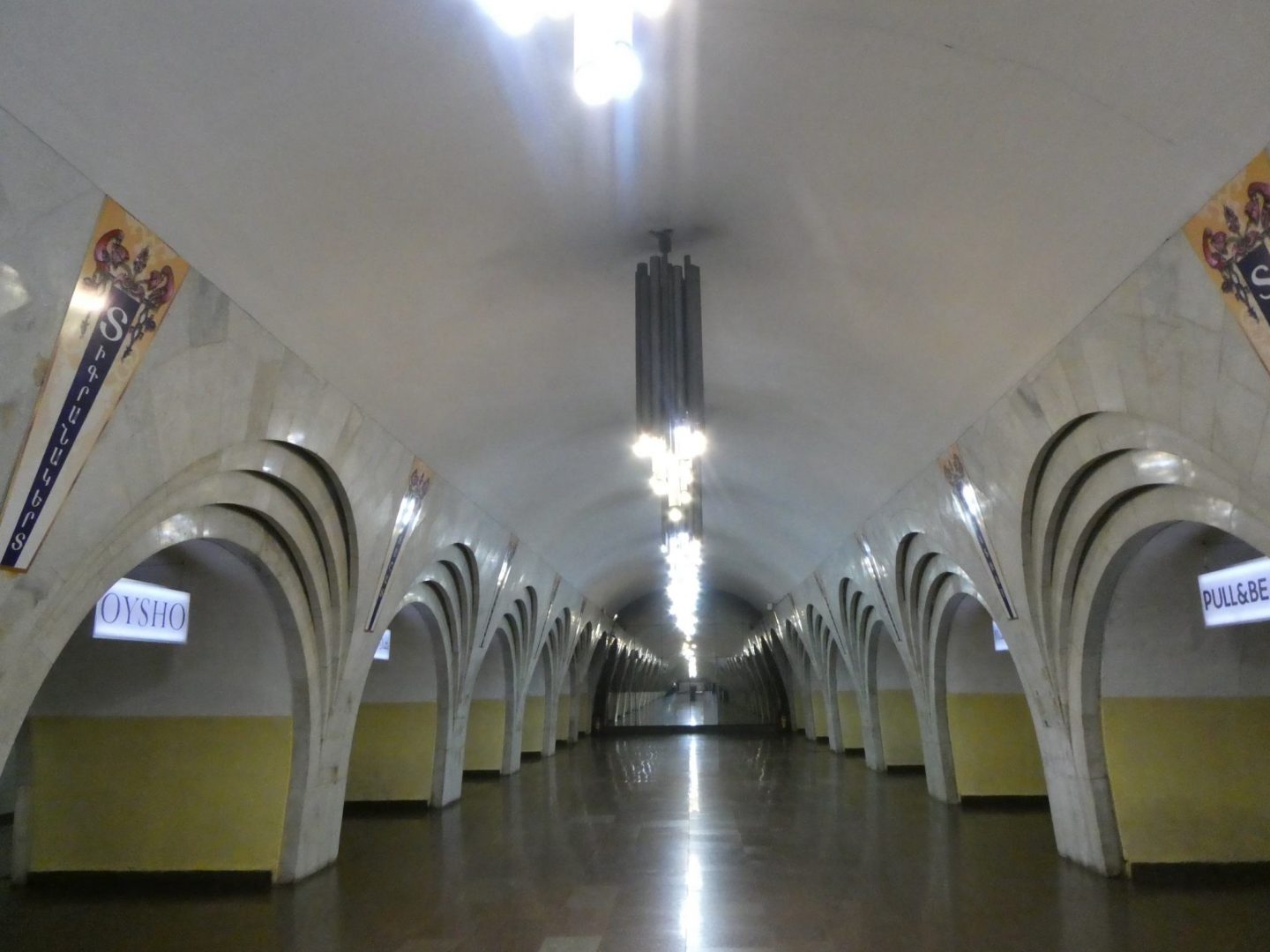 So is this pedestrian tunnel. 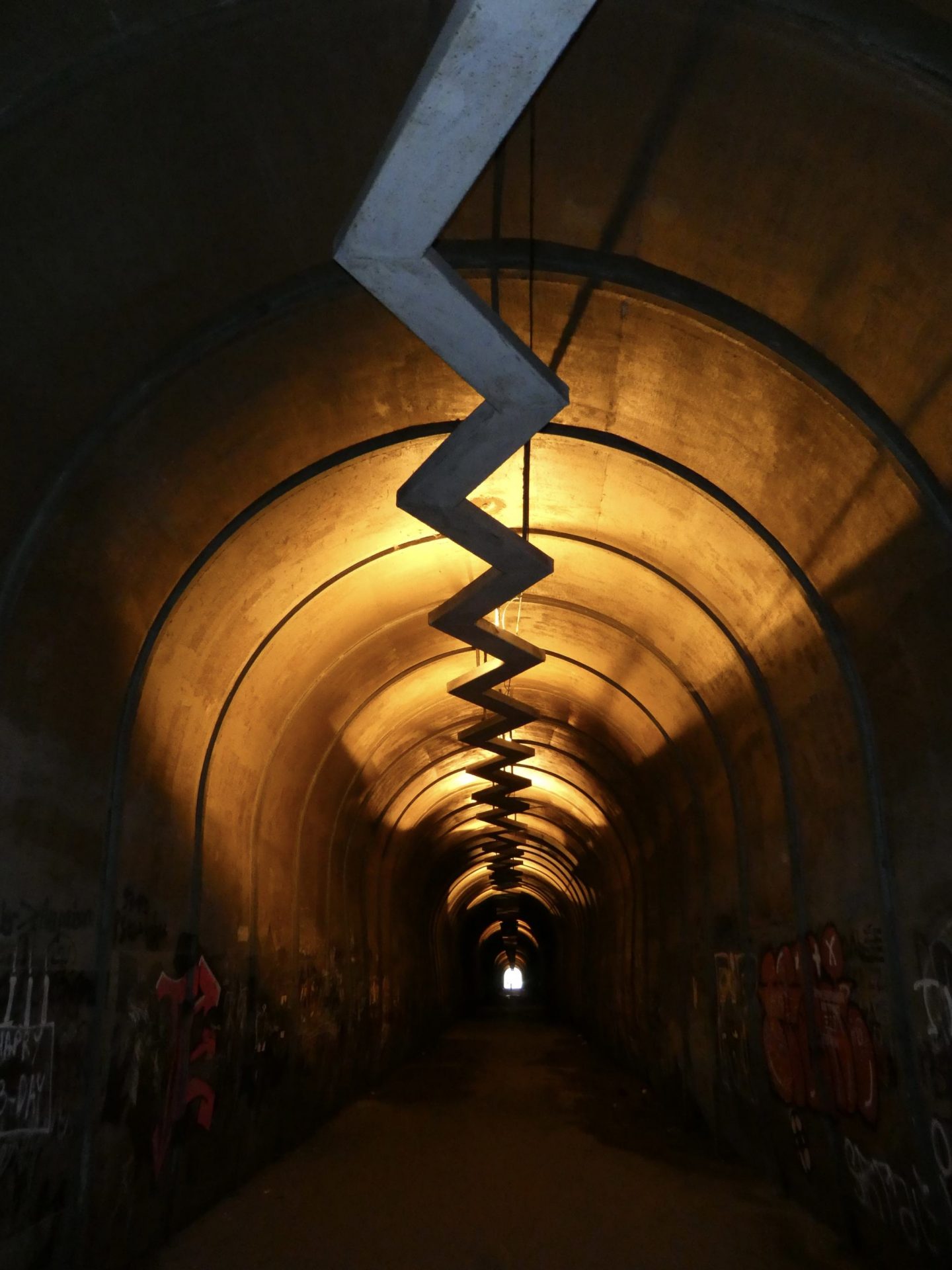 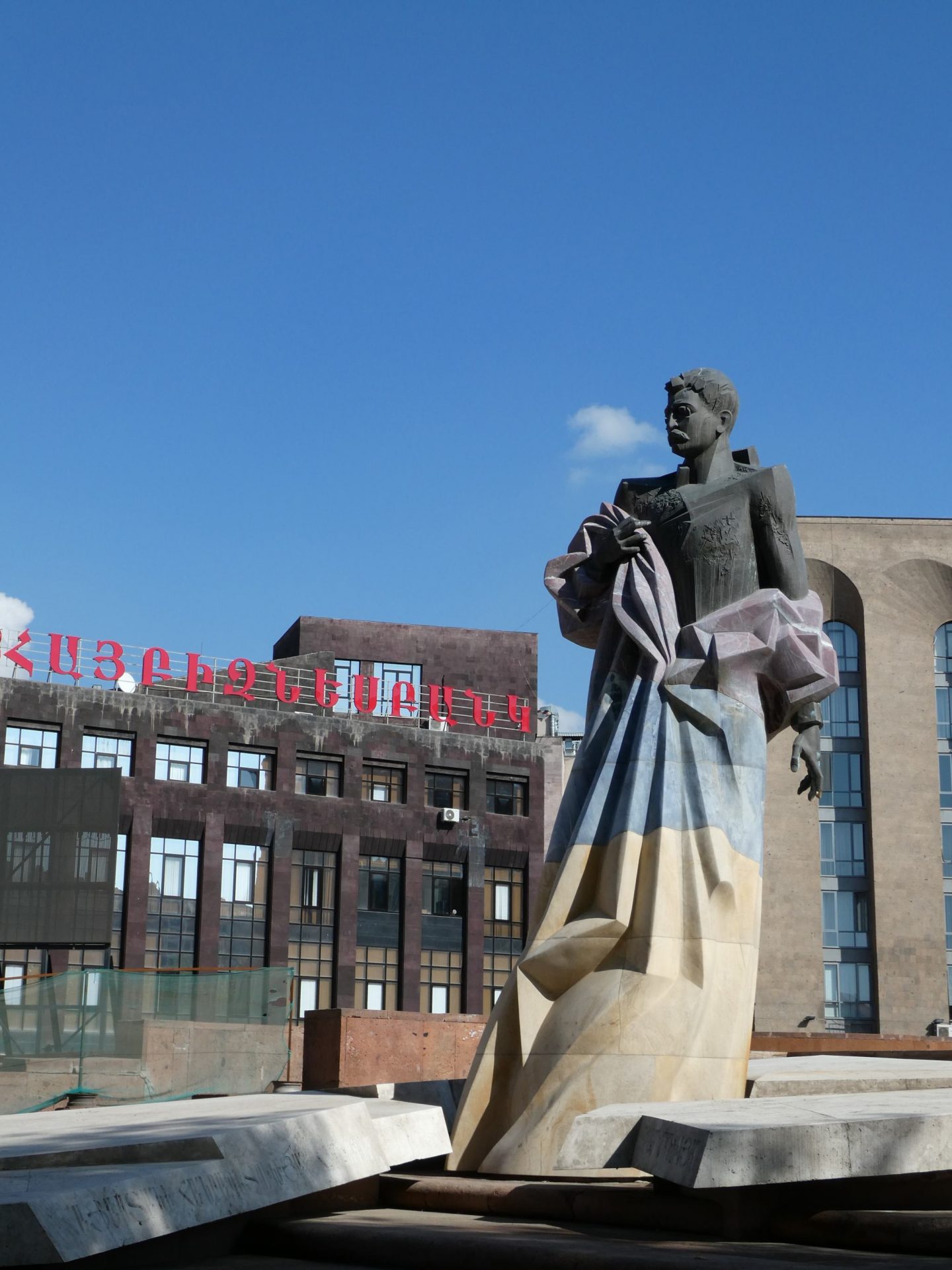 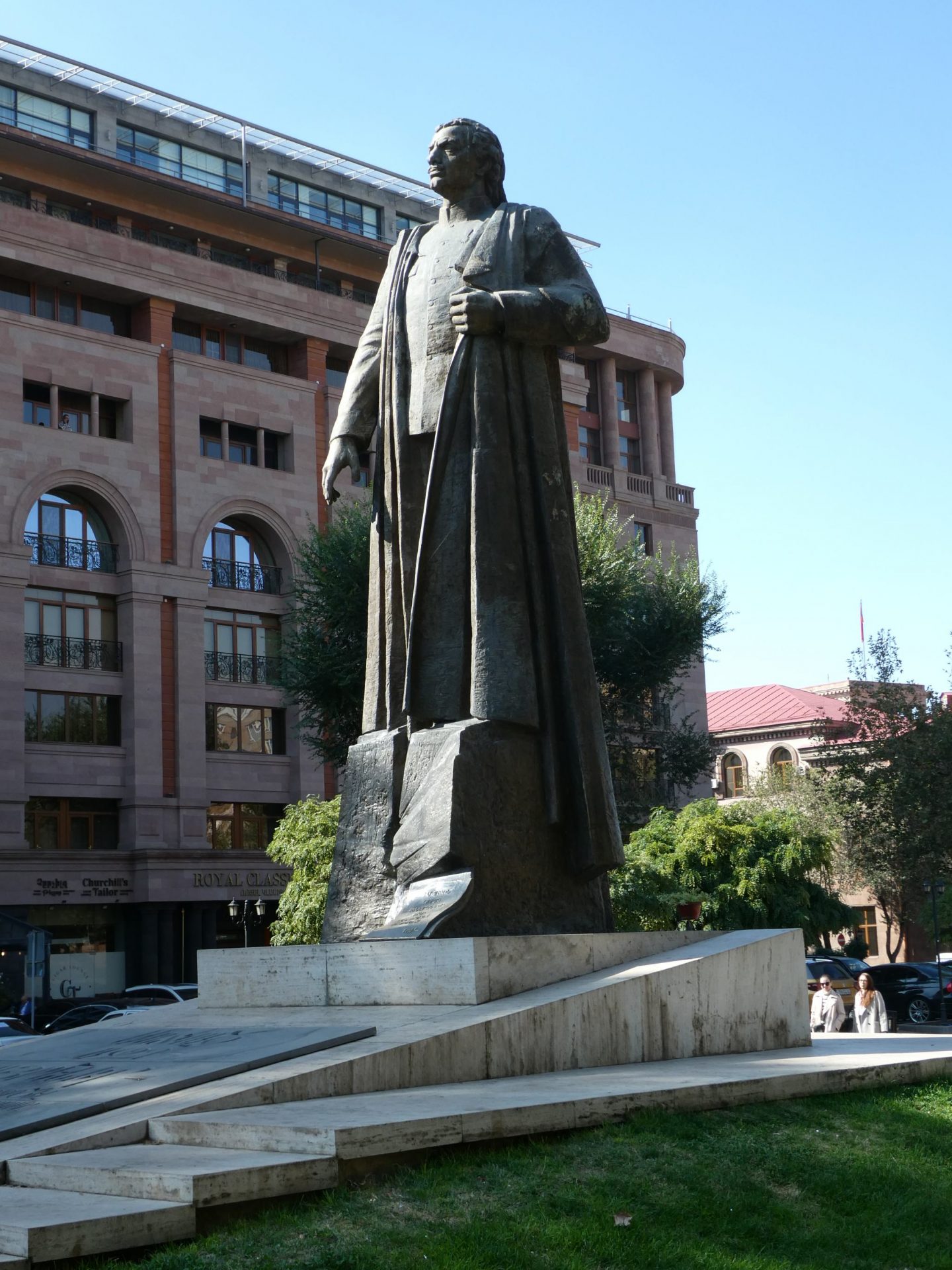 We are not sure who this exuberant piano player is.  But there’s a story about the water feature behind.  It’s officially called Swan Lake.  In 2015 Kayne West gave a free concert here.  He dived into the lake and now it’s nicknamed Swayne Lake.  Oh dear. 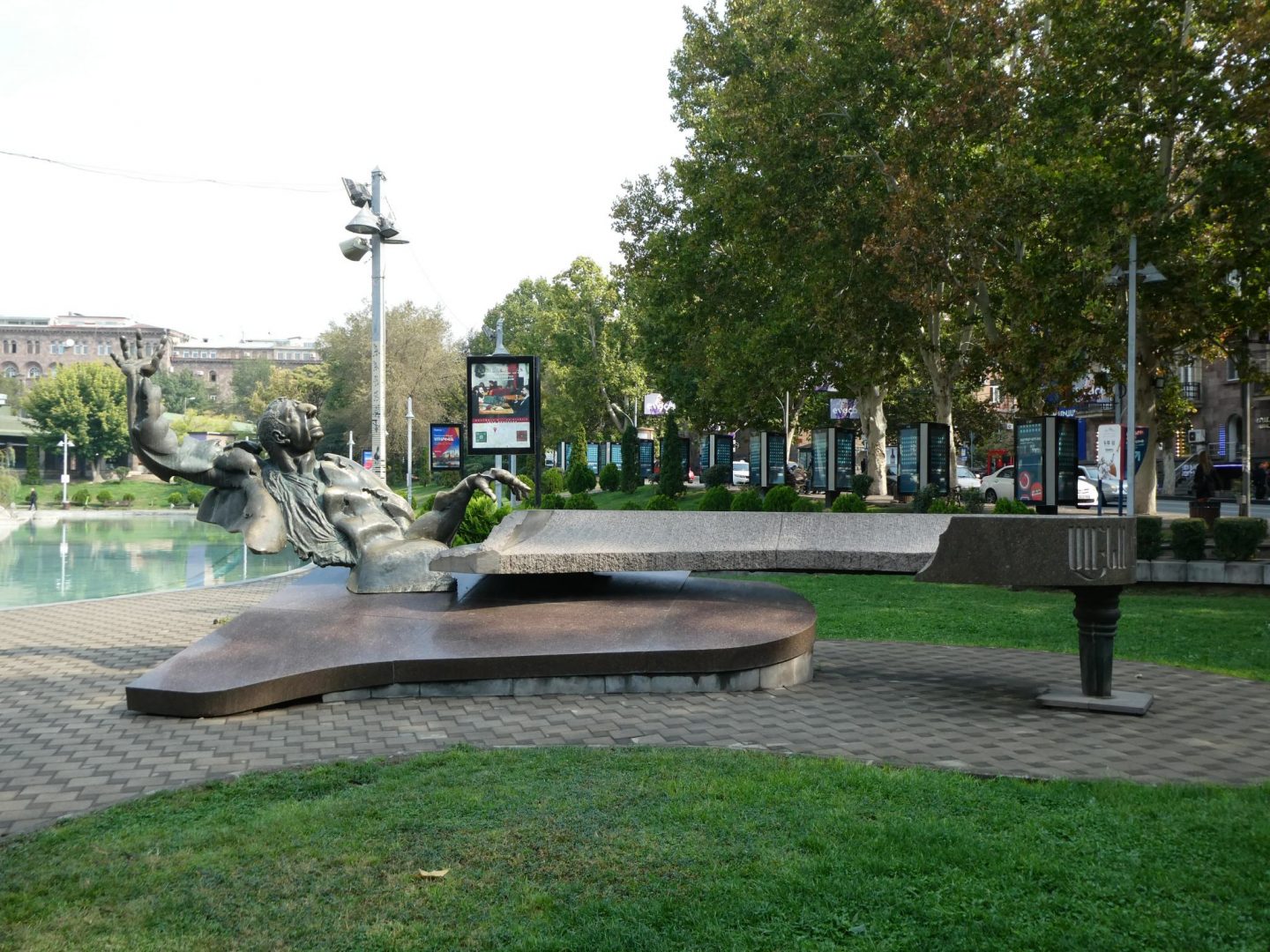 During the Soviet era many of Armenia’s places of worship were decommissioned.  Armenia’s only mosque was converted into a secular performance space with a tea house in the courtyard.  In 1996 it re-opened as a religious institution.  The mosque was restored with more than $1 million provided by the Iranian government and is mostly used by Iranian visitors. 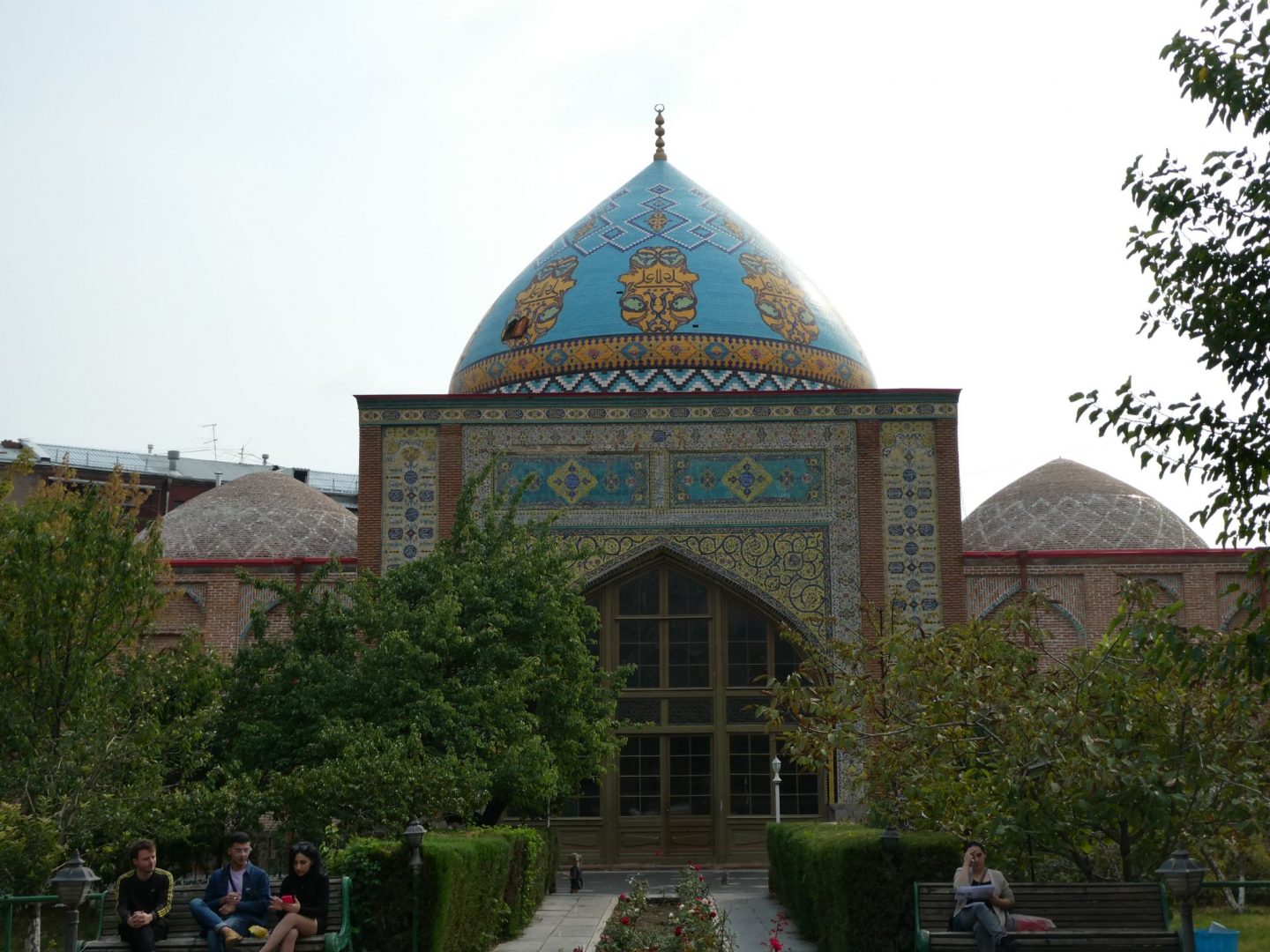 Temanyan planned a ‘cascade’ of gardens and waterfalls to connect the city centre with the northern residential area on the canyon rim.  The project was never started in his lifetime and a later architect modified the design to include a monumental staircase.   Work did not start until 1980 and then stalled due to an earthquake in 1988.  Ultimately the project was rescued and funded to near completion by Gerard Cafesjian, an American businessman of Armenian heritage who made his first fortune in American print media and a subsequent fortune in Armenian TV media following the fall of the USSR.

It’s actually a very clever design.  The cascade is a series of platforms with ornamental art and fountains and a staircase on either side. 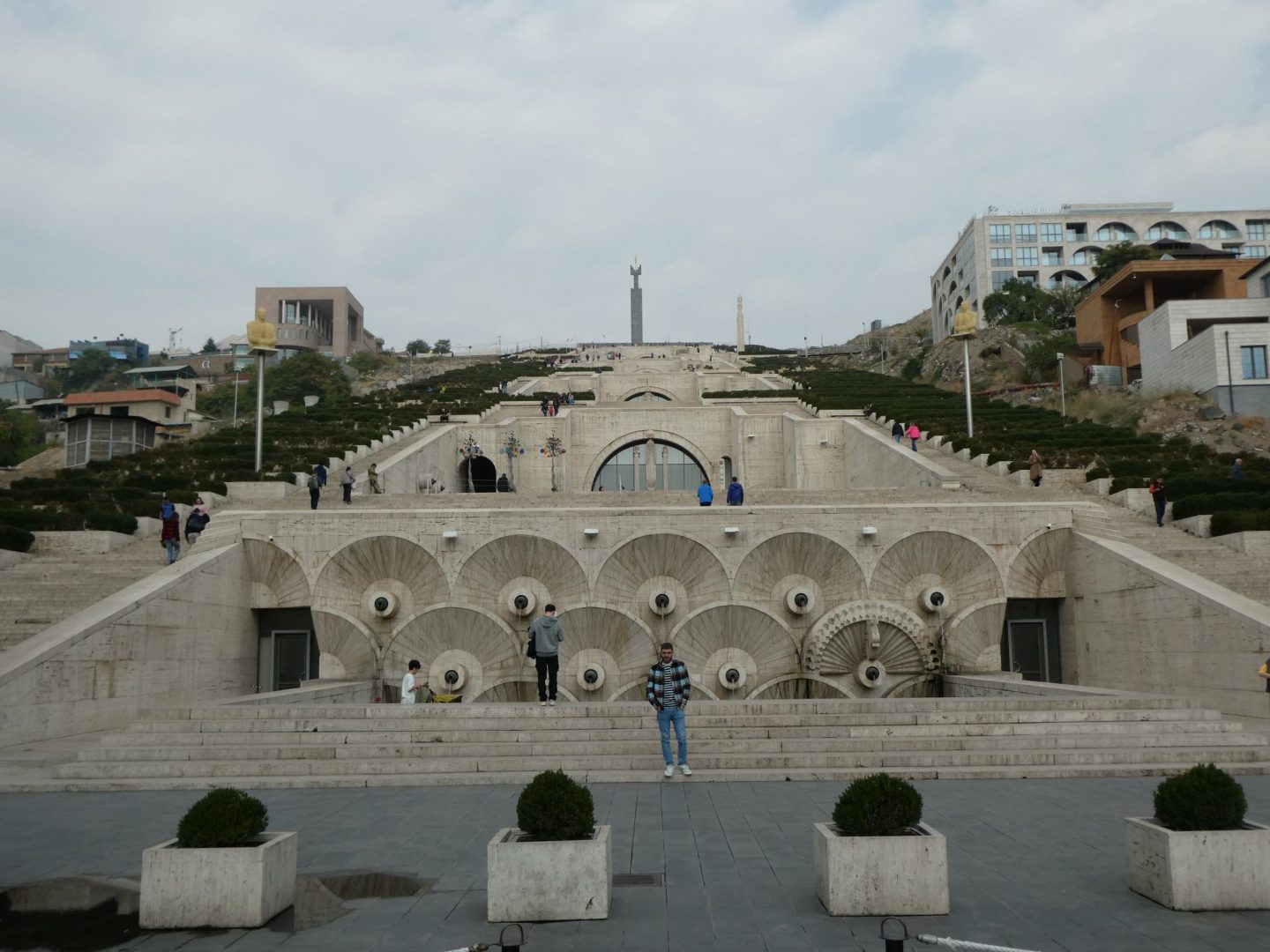 But inside, a series of escalators ascend past Mr Cafesjian’s private art collection and allow visitors to access each outdoor section without climbing the outdoor stairs.

And from the top looking down, it looks completely different again. 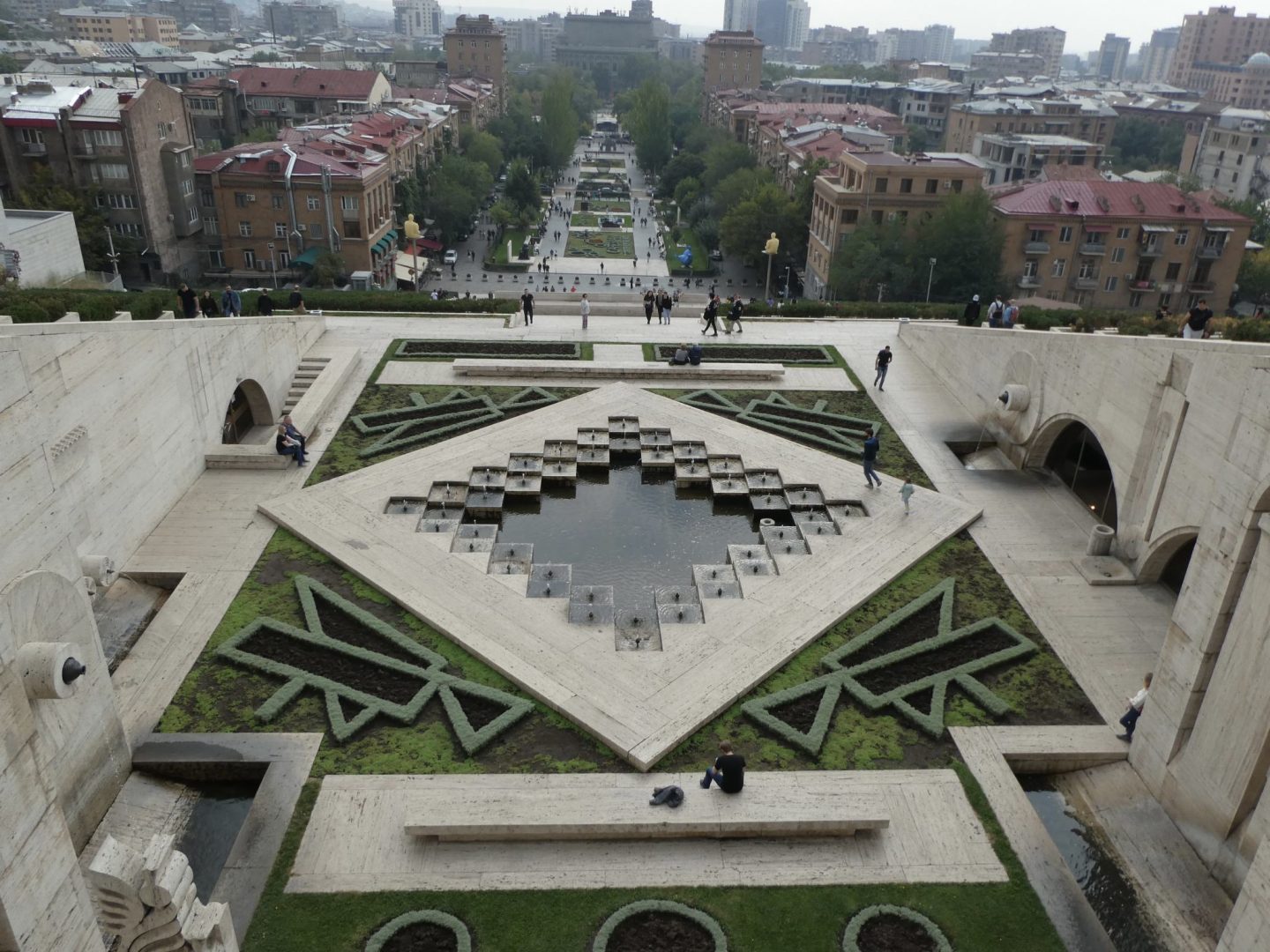 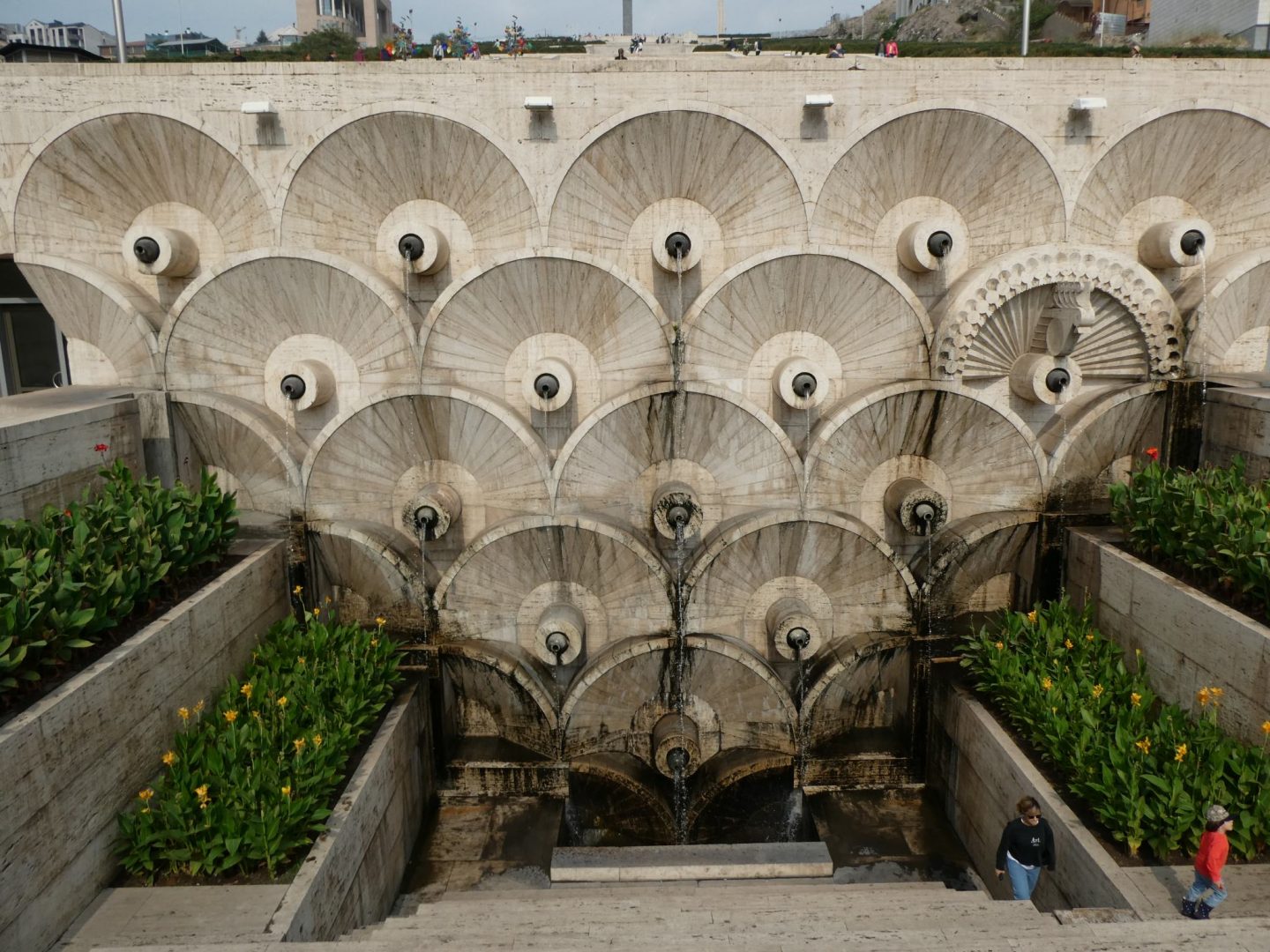 Armenians revere an ancient golden age when their empire stretched into parts of modern day Turkey, Azerbaijan and Georgia, as shown in this decoration in the metro. 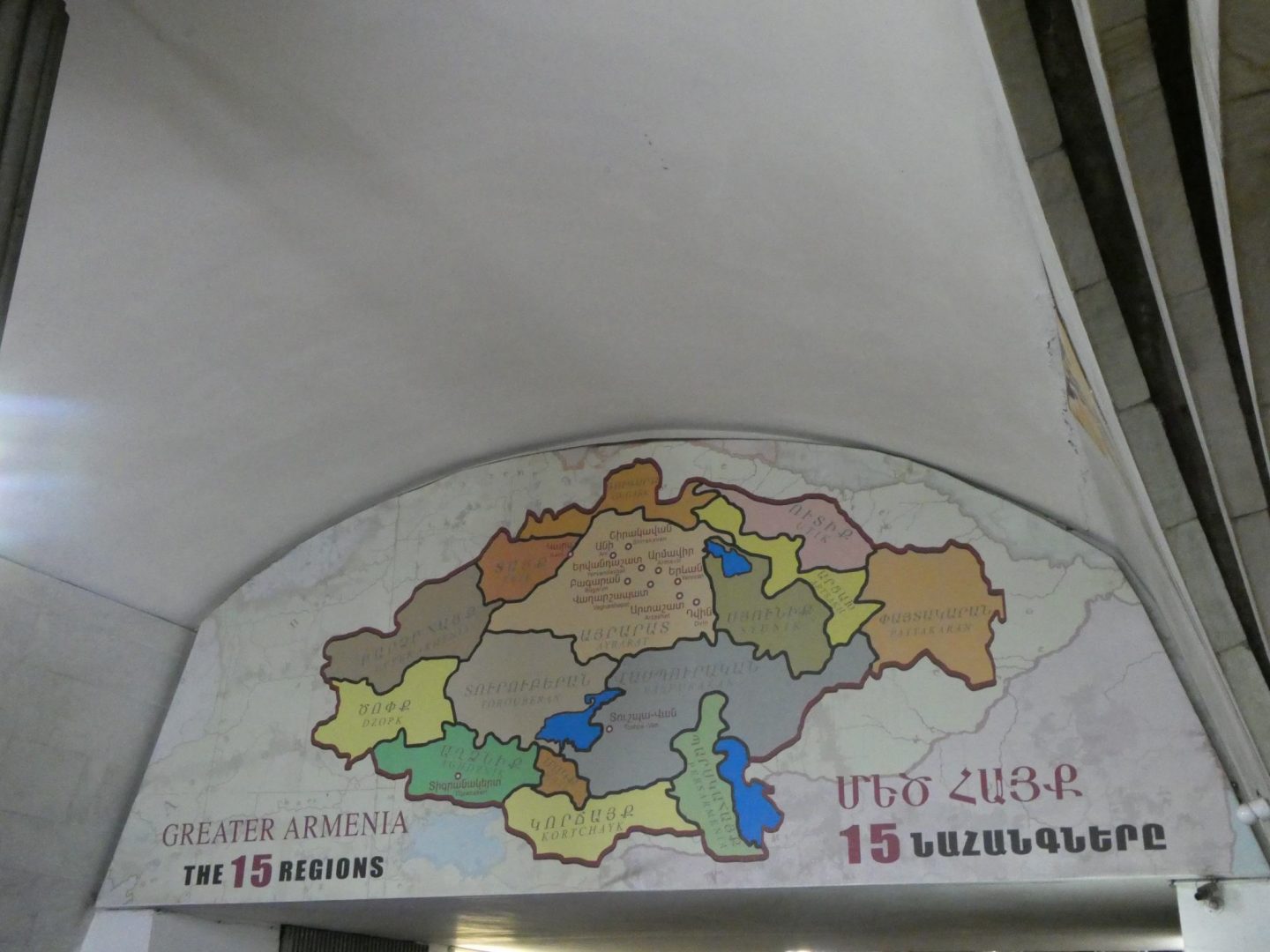 As at the late 19th century most of Armenia’s former empire was part of the Ottoman Empire.  Armenians enjoyed a peaceful, if subordinate co-existence with the Turkish peoples.  They retained a distinct ethnic, cultural, linguistic and religious identity.

With most of the Balkans fighting for independence, the Ottomans feared the Armenians would do the same and, if successful, would take much of the Turkish heartland.  To forestall any such possibility, the Ottomans deported Armenians en masse, intending to empty ‘Turkish lands’ of Armenians.

The Ottoman Empire collapsed but purges continued under the rule of the new Republic of Turkey.  In the complicated geo-politics which followed WWI, Armenia gained statehood as an SSR and the killing stopped, but a deal between Ataturk on behalf of Turkey and Lenin on behalf of the USSR ceded the areas Armenia considered its twelve western provinces to Turkey. 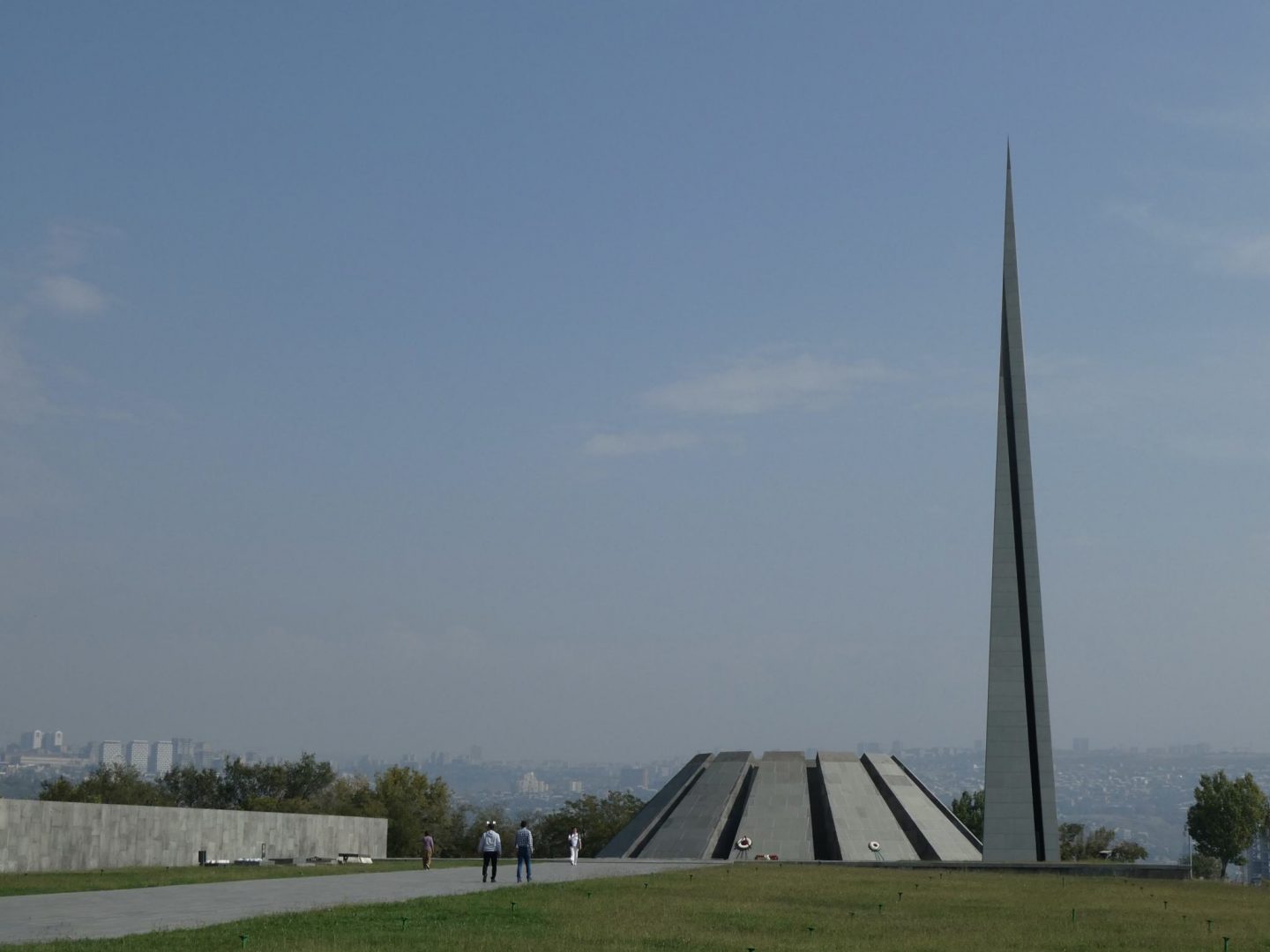 The slabs surround an eternal flame in honour of those killed during the dispossession. 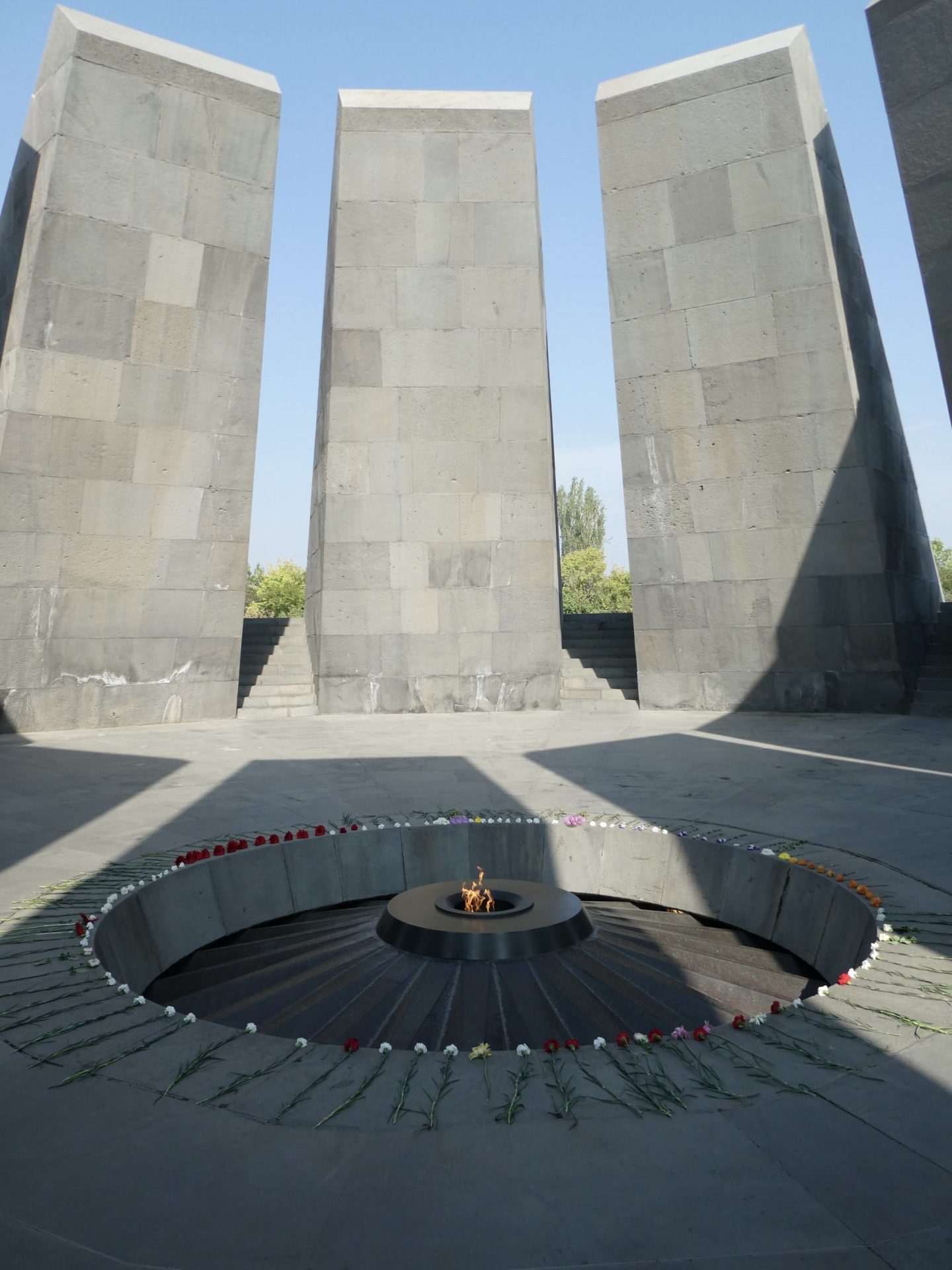 International relations between Turkey and Armenia have never been normalised.  Borders are closed and a deep enmity remains.  Armenia is aggrieved by the loss of these lands but also, perhaps even more so, by Turkey’s continued refusal to acknowledge that the persecution and slaughter of 1915 to 1922 amounted to attempted genocide.

There is a special garden at the Genocide Memorial site dedicated to the nations which have formally acknowledged the events as genocide.  So far only 31 countries, the Pope and the European Parliament have done so.  Australia has not.  For decades Turkey censored any internal discussion about the events and it has spent millions lobbying and pressuring countries against any recognition of the genocide.

And now, because we like to end on a humorous note, here’s a story that will resonate with any woman whose husband fancies himself a DIY home renovator.

It’s 1985 in the village of Arinj on the fringe of Yerevan.  A conversation takes place between Toysa and Levon, an ordinary couple in their ordinary village house.

Toysa: “Would you dig a pit so I can store some potatoes”.

Levon begins to dig.  After 80cm he hits rock.  He turns to the right and keeps digging.  He plans to dig a hole about 2 metres deep.  He hits more rock and decides to cut a set of steps down through it. 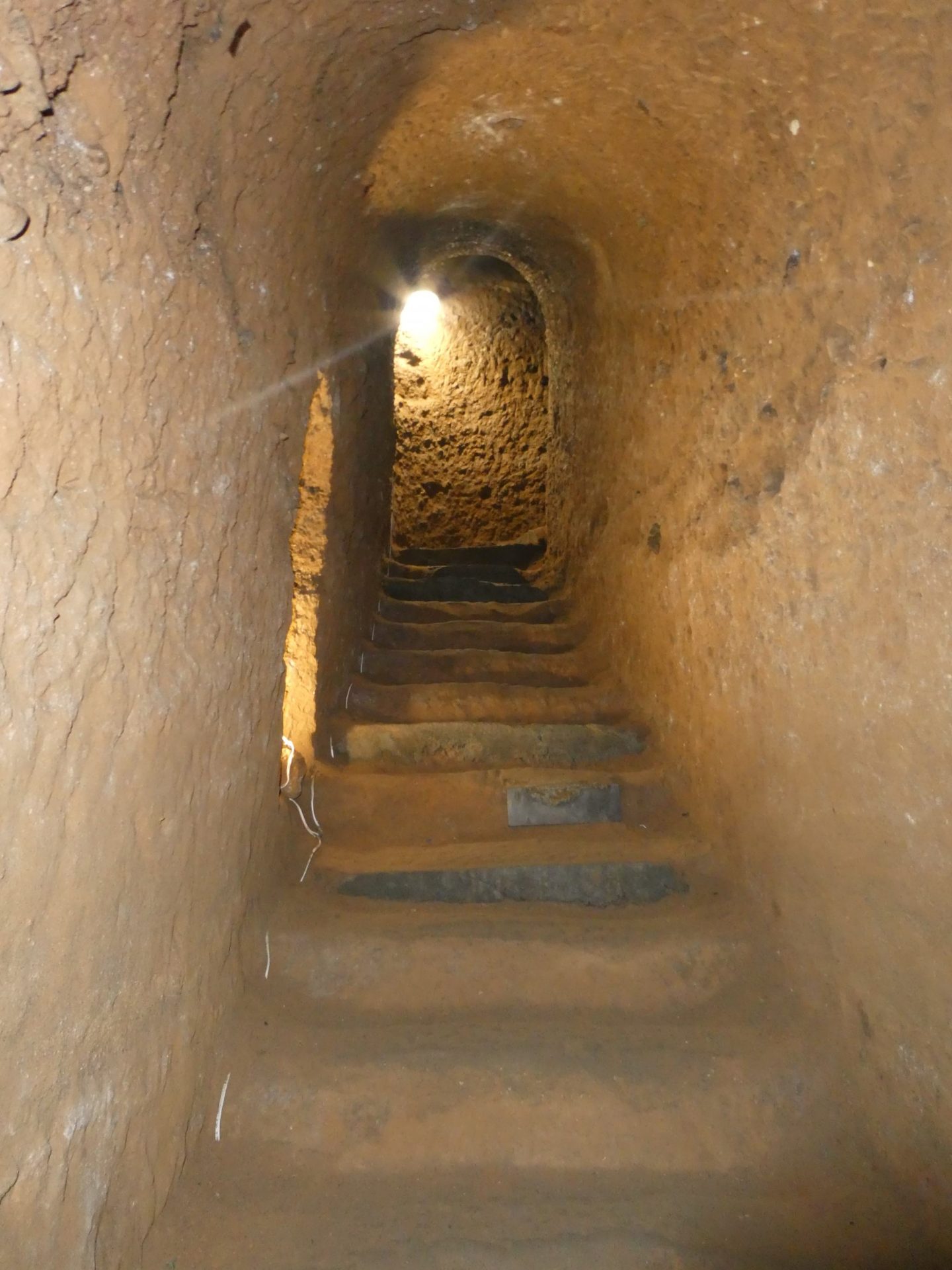 After several metres and 10-12 steps he thinks “Forget about potatoes.  I think I’ll dig a wine house so when I retire I can sit down there with my mates drinking wine”.  He is 44 years old.

Levon becomes obsessed.  He works three or four days per week in a regular job and spends the rest of his time digging.  “I didn’t notice how the stone pulled me into itself”, he later recalled.

At some point Levon abandons the plan for a wine house.  He keeps digging and carving until he has created seven levels of underground rooms. But no pit for potatoes. 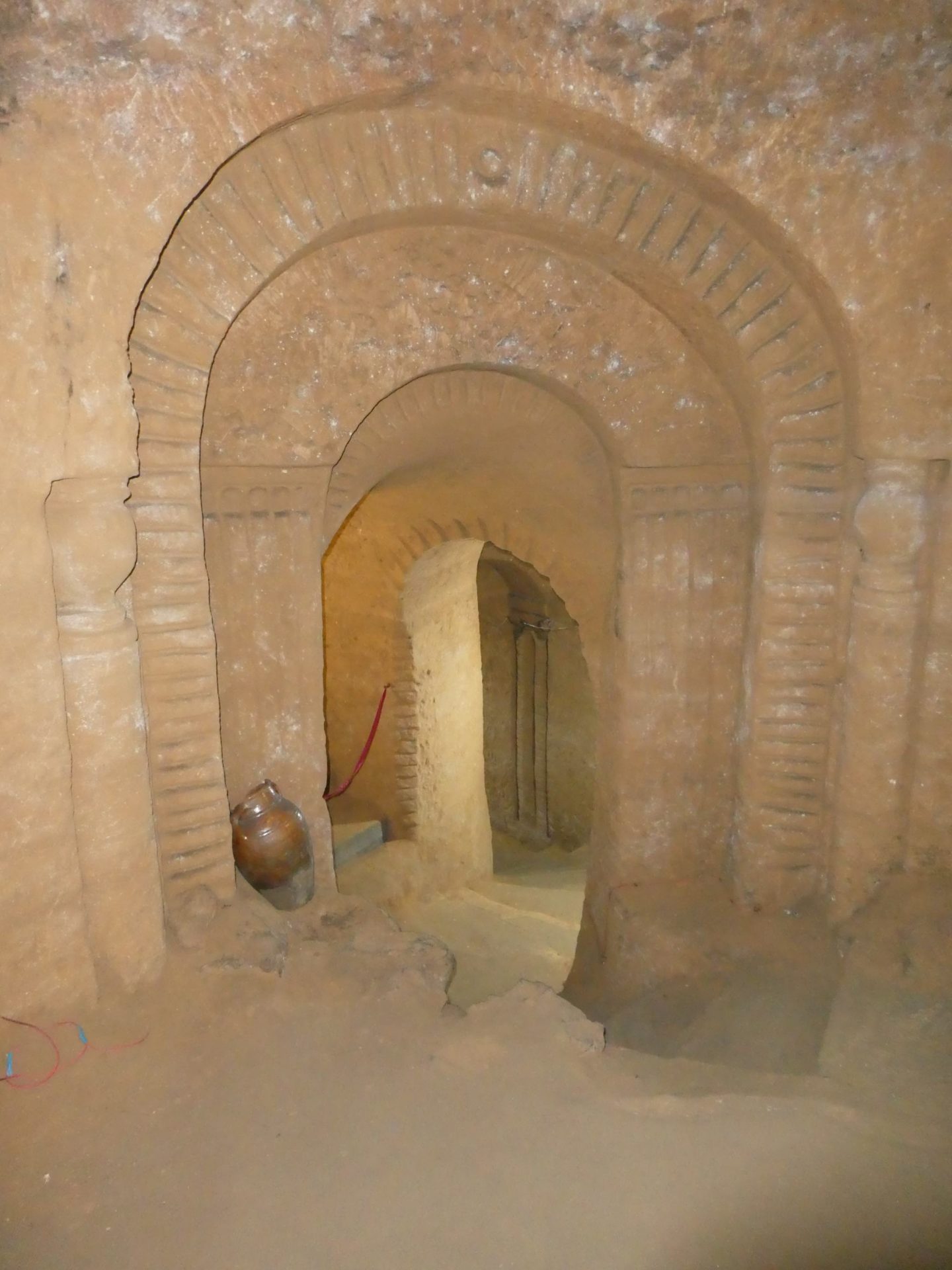 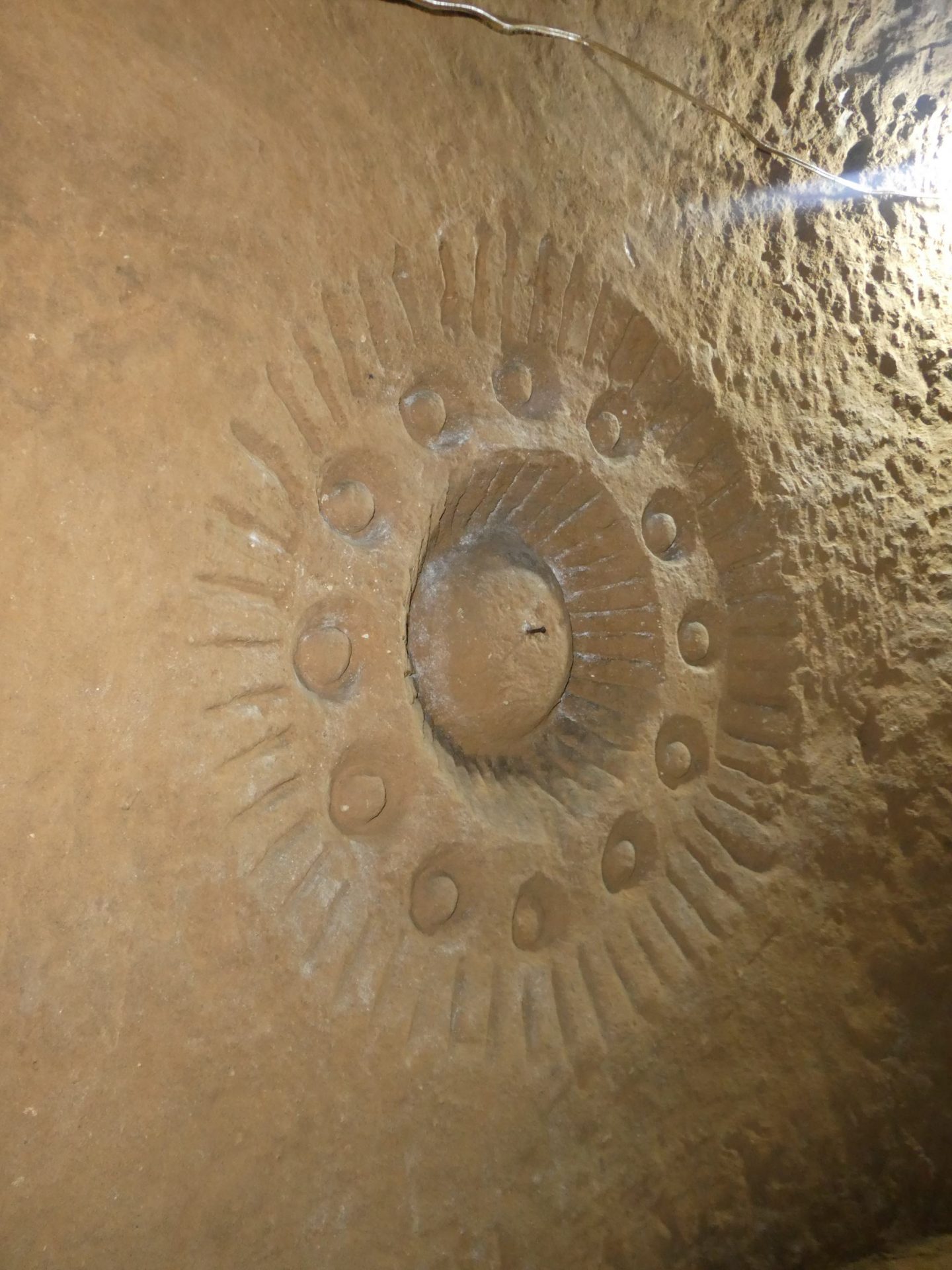 He comes to see it as a spiritual endeavour.  He starts carving niches for objects and even a chapel. 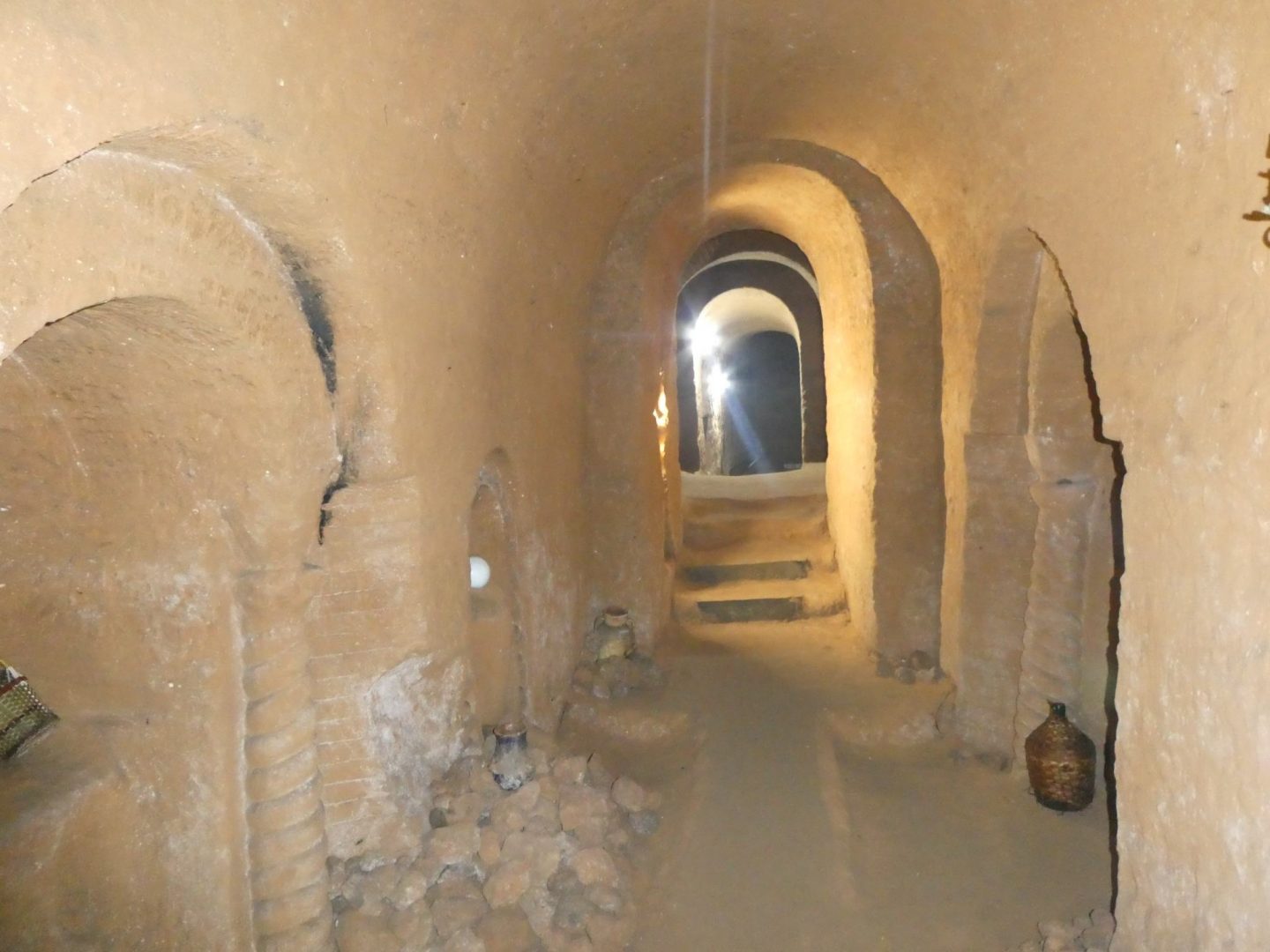 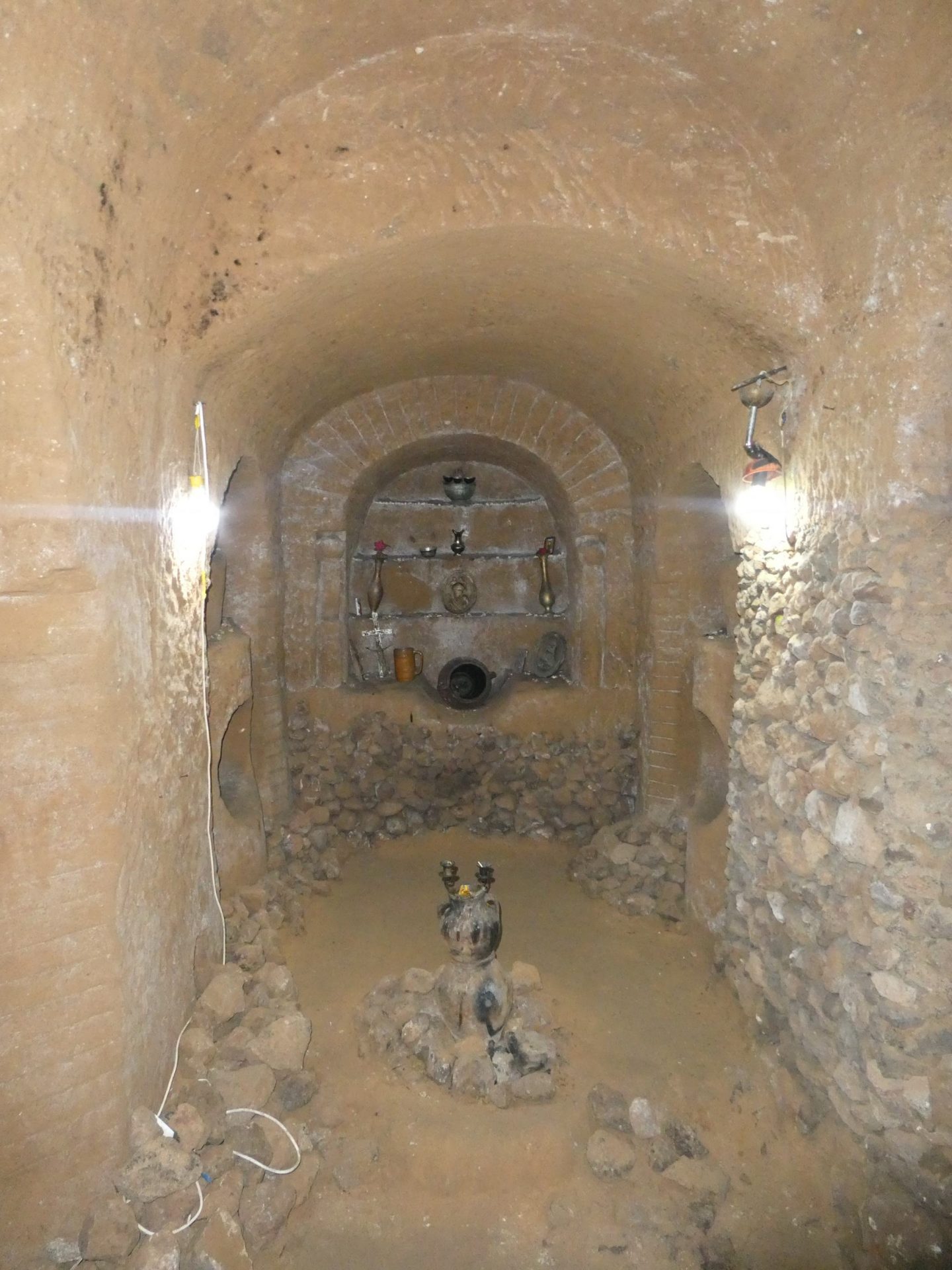 He does all the work himself, by hand with a hammer and chisel.   He digs non-stop for 23 years right up until the day he died in 2008.  A never-ending project.

And what did he do with all the stone he dug out?  At least some of it went to creating a rock garden in their backyard complete with portraits of himself and Toysa. 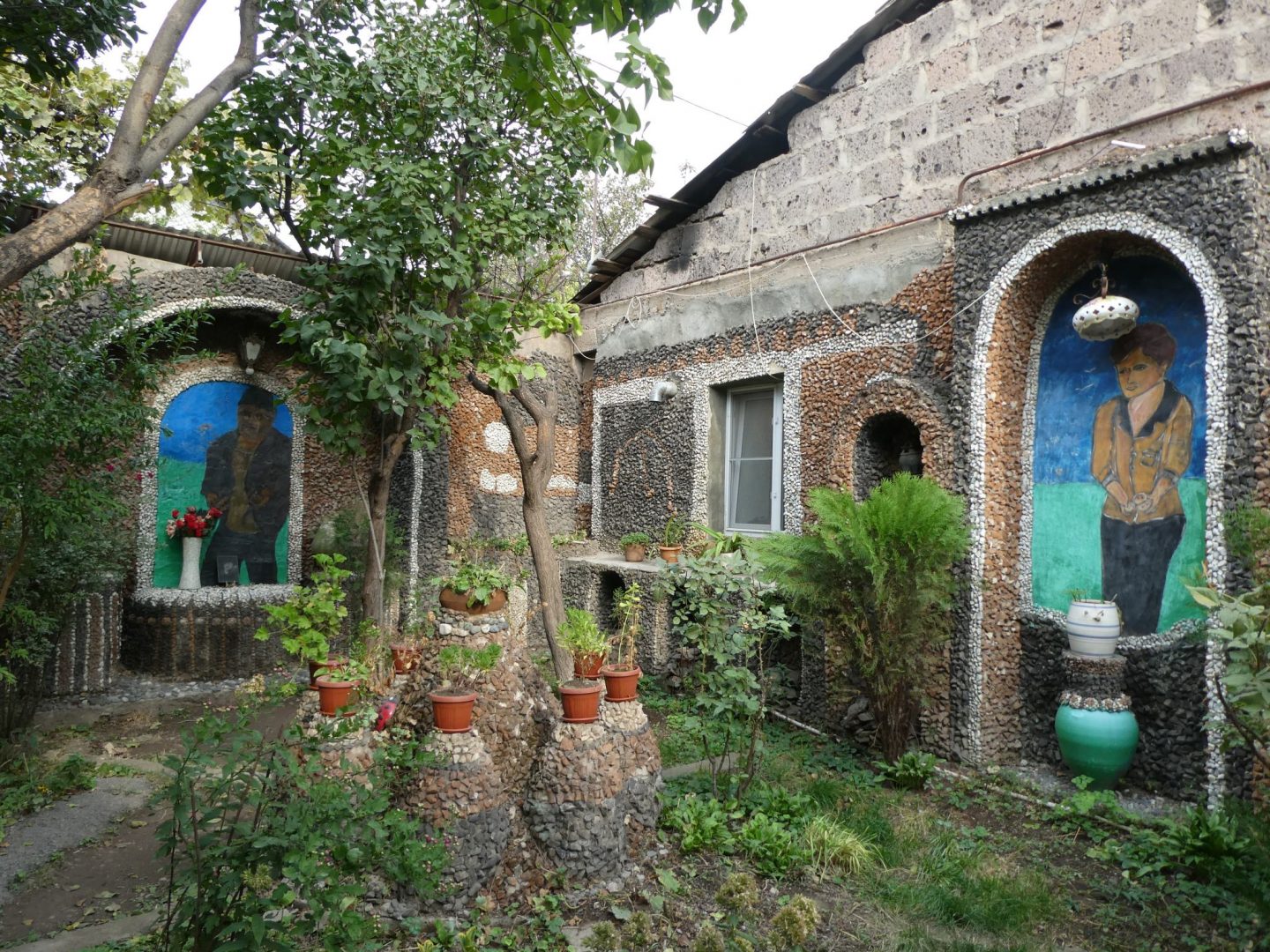 Levon called it a “place of dreams”.

Toysa’s verdict is surely the understatement of the year: “We came to have neither a good house nor a pit for potatoes”.

But ironically Levon’s obsession left her with some financial security in her old age.  Tourists from all over the world have trekked to her door to see ‘Levon’s Miracle Potato Cellar’.  Toysa even has a world map on a pin board where visitors are invited to stick a pin showing their home town.  If the board is right, we are her second visitors from Brisbane. 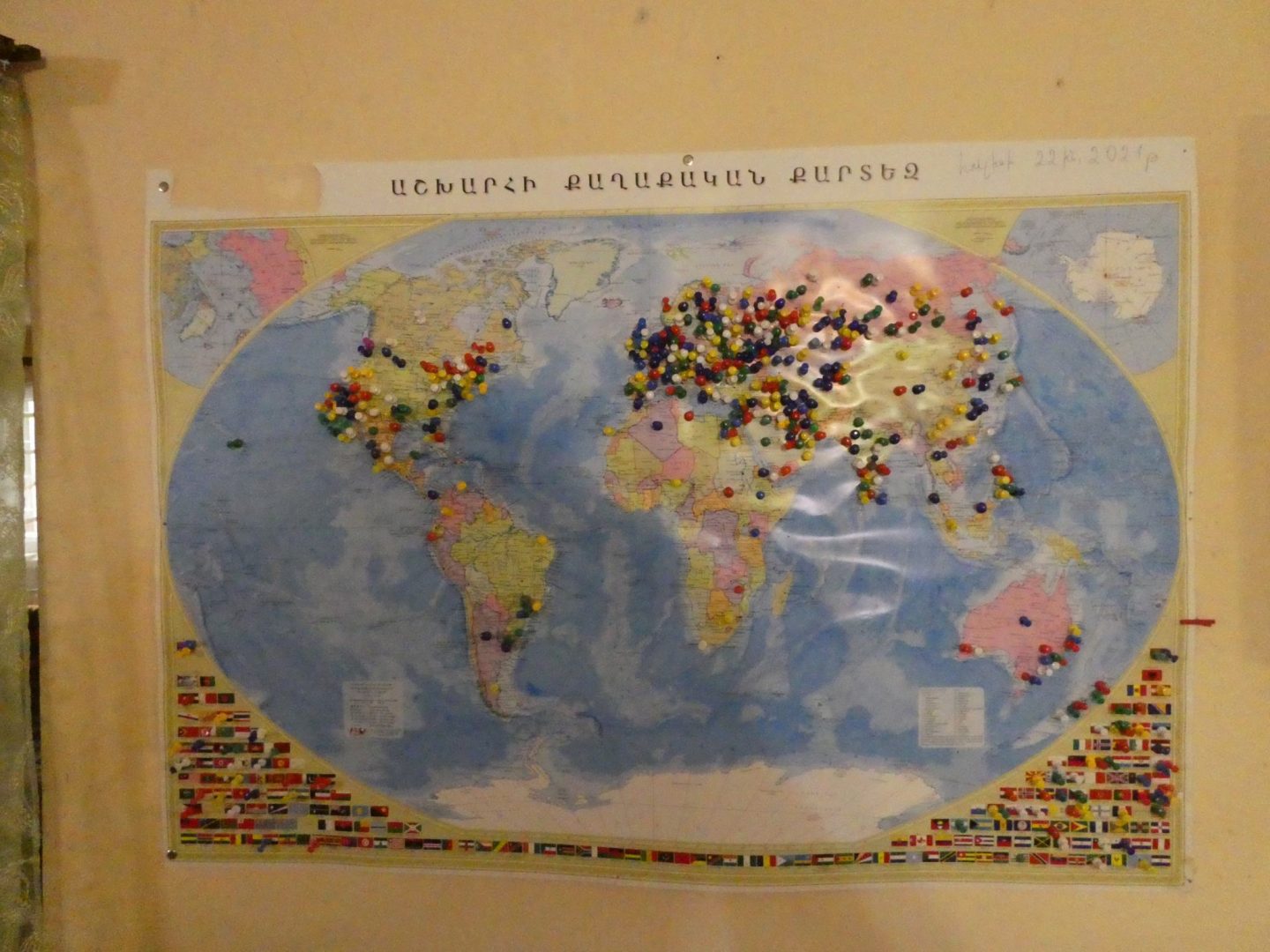