Within striking distance of Yerevan there are three significant monastery and temple sites.  Well, actually, there are many more than that.  Medieval monasteries are Armenia’s biggest drawcard.  But there’s a real risk of monastery fatigue in Armenia. Three was enough.

Generally they can be reached by local minibuses.  These leave from ‘stations’ around town which are really not much more than dirt parking lots.  Signage is non-existent.  Armenia has it’s own obscure alphabet.  Sometimes finding the right bus can be quite a challenge. 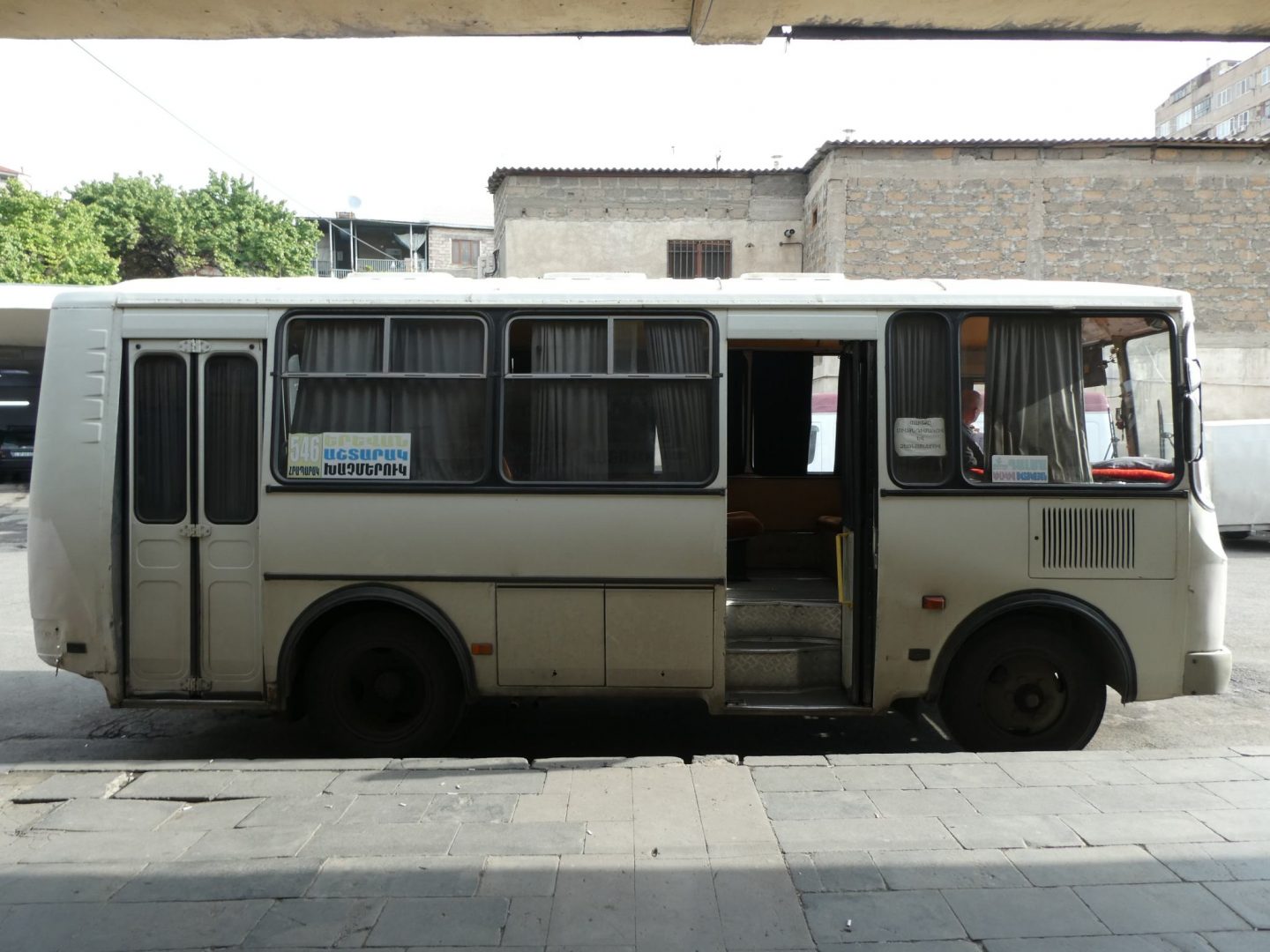 There’s always a history with monasteries, usually involving miracles, bloodshed or both.  Khor Virap is no exception.  It’s complicated but goes something like this.

In 339 CE, King Khosrov III of Armenia was murdered by his distant relative Anak.  Both had young sons at the the time.  Fast forward a few decades and Khosrov’s son, Tiridates III was now king.  He was also a committed pagan who persecuted those attempting to bring Christianity to his kingdom.  When he discovered that his advisor, Grigor was not only a Christian but the son of his father’s murderer, Tiridates had Grigor thrown into a deep pit in the prison at Khor Virap castle.

Tiridates assumed Grigor would die soon enough and thought no more about him.  Grigor was forgotten except by a local widow who regularly tossed a loaf of bread down the hole after being told to do so in a dream.  He spent the next 13 years in the 60 metre deep, 4.4 metre wide pit praying and sojourning with poisonous snakes.

In the meantime, Tiridates continued his persecution of the Christians and for his nefarious deeds was rendered insane.  His sister dreamed that his sanity could only be restored by submitting to the man in the prison pit.  Grigor was retrieved, the king converted to Christianity, his sanity returned and Christianity flowered in Armenia.

Grigor went on to become Gregory the Illuminator, patron saint and first official head of the Armenian Apostolic Church.

And Khor Virap was converted from a castle-prison to a monastery. 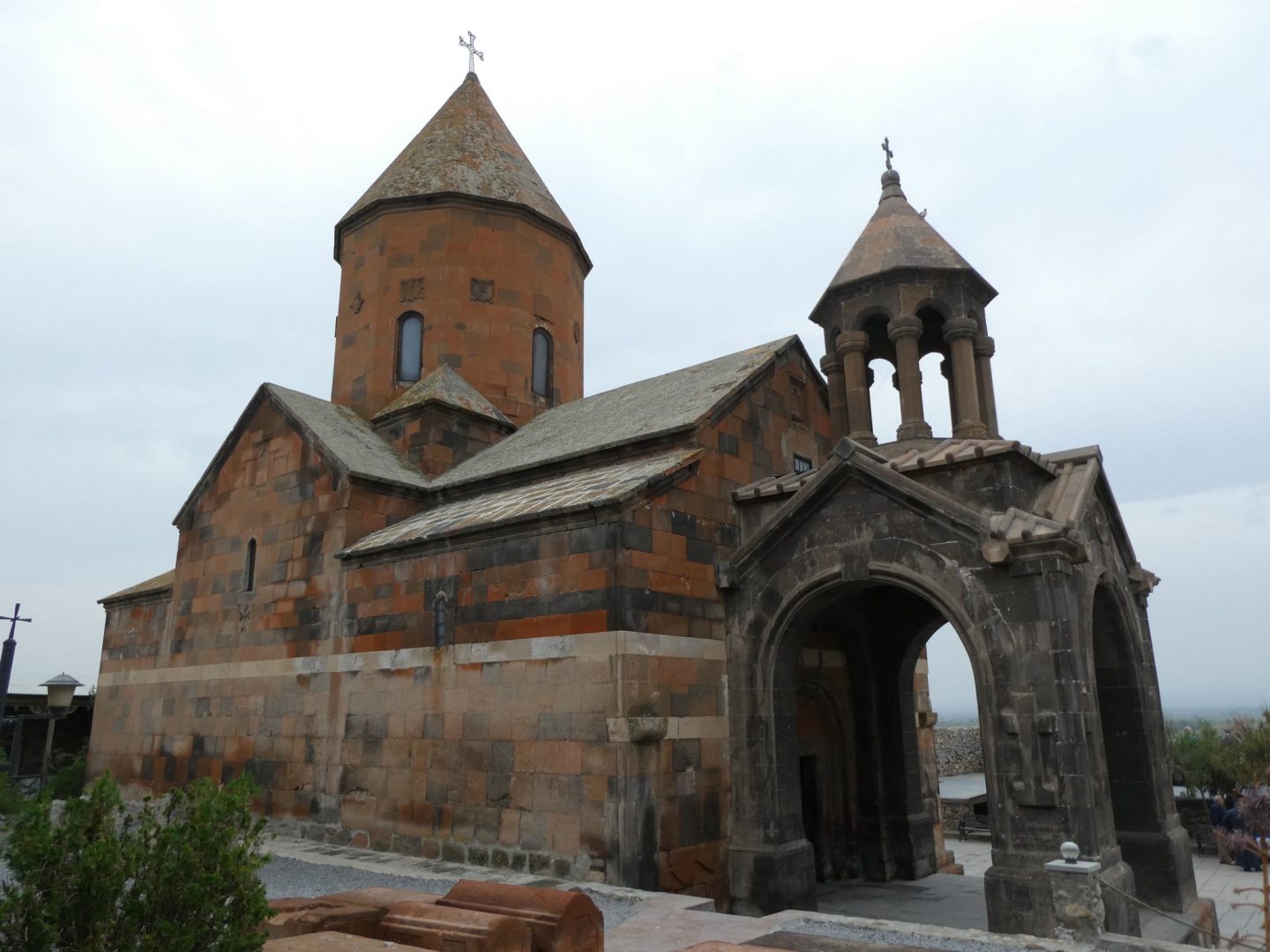 A chapel was built over the pit in which Gregory spent his imprisonment. It’s small and simple but many come here to pray. 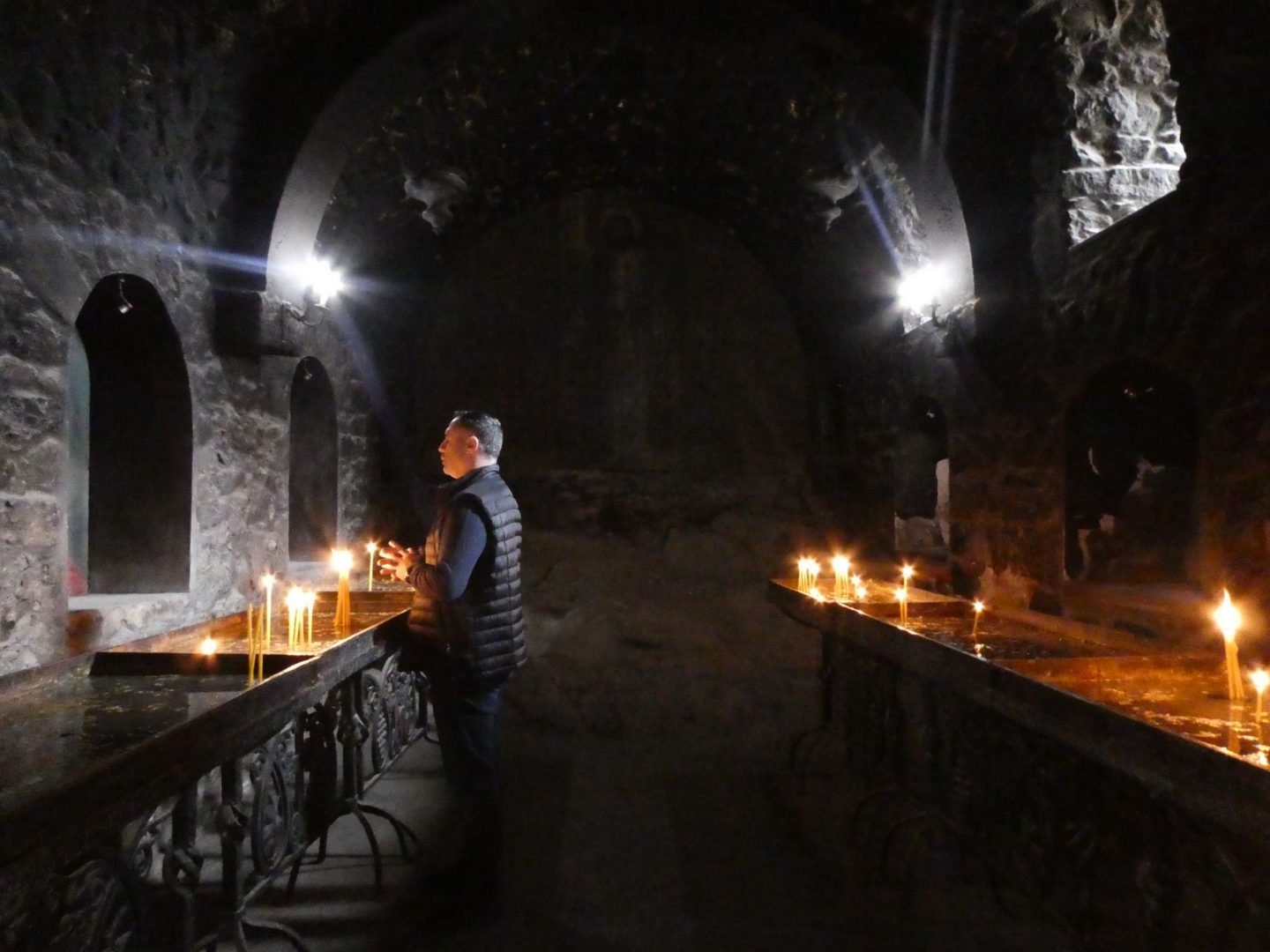 The pit is preserved, complete with a ladder which pilgrims descend to pay their respects to Gregory. 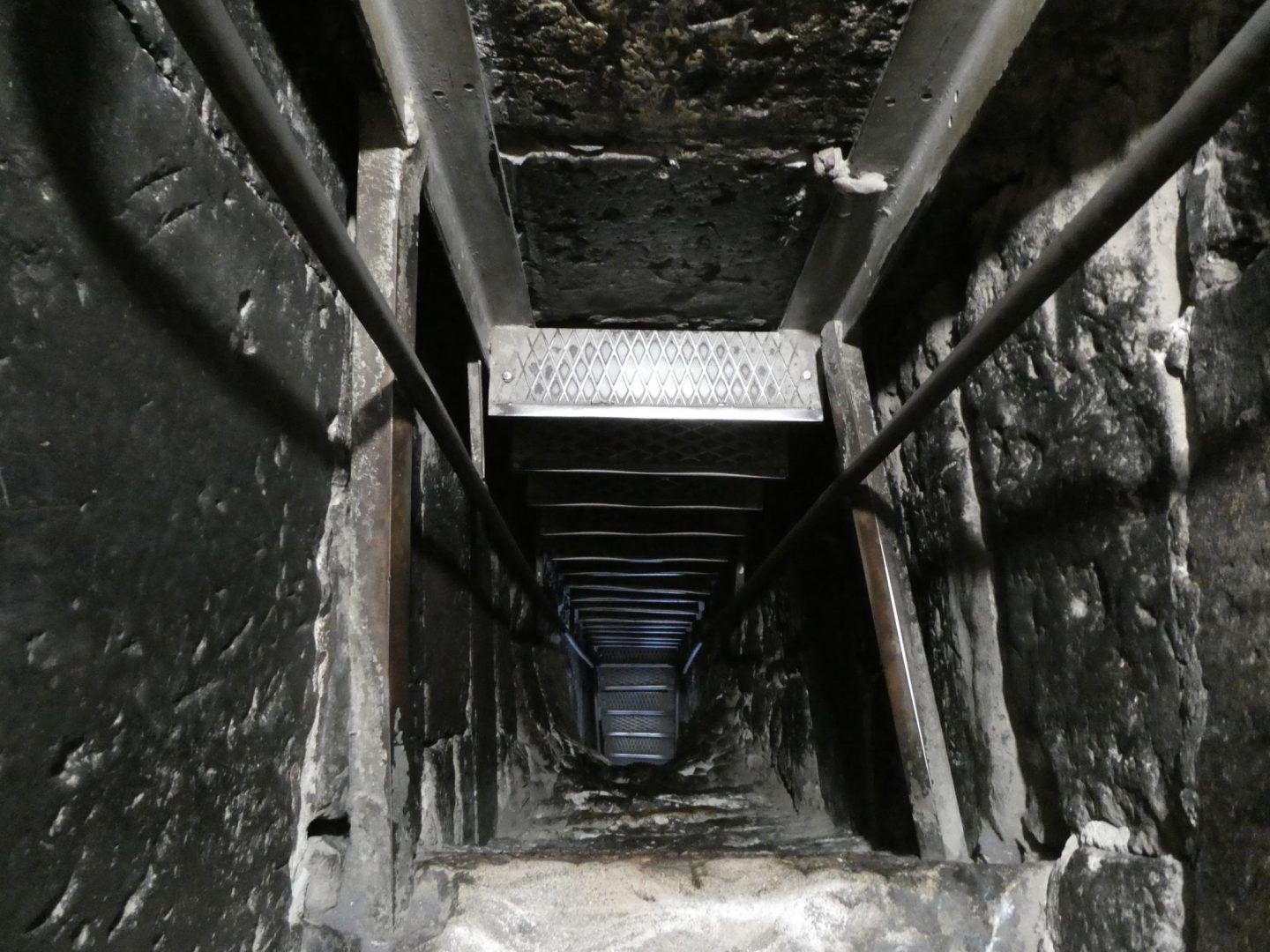 The complex is high on a hill with views out over the plains of Ararat. 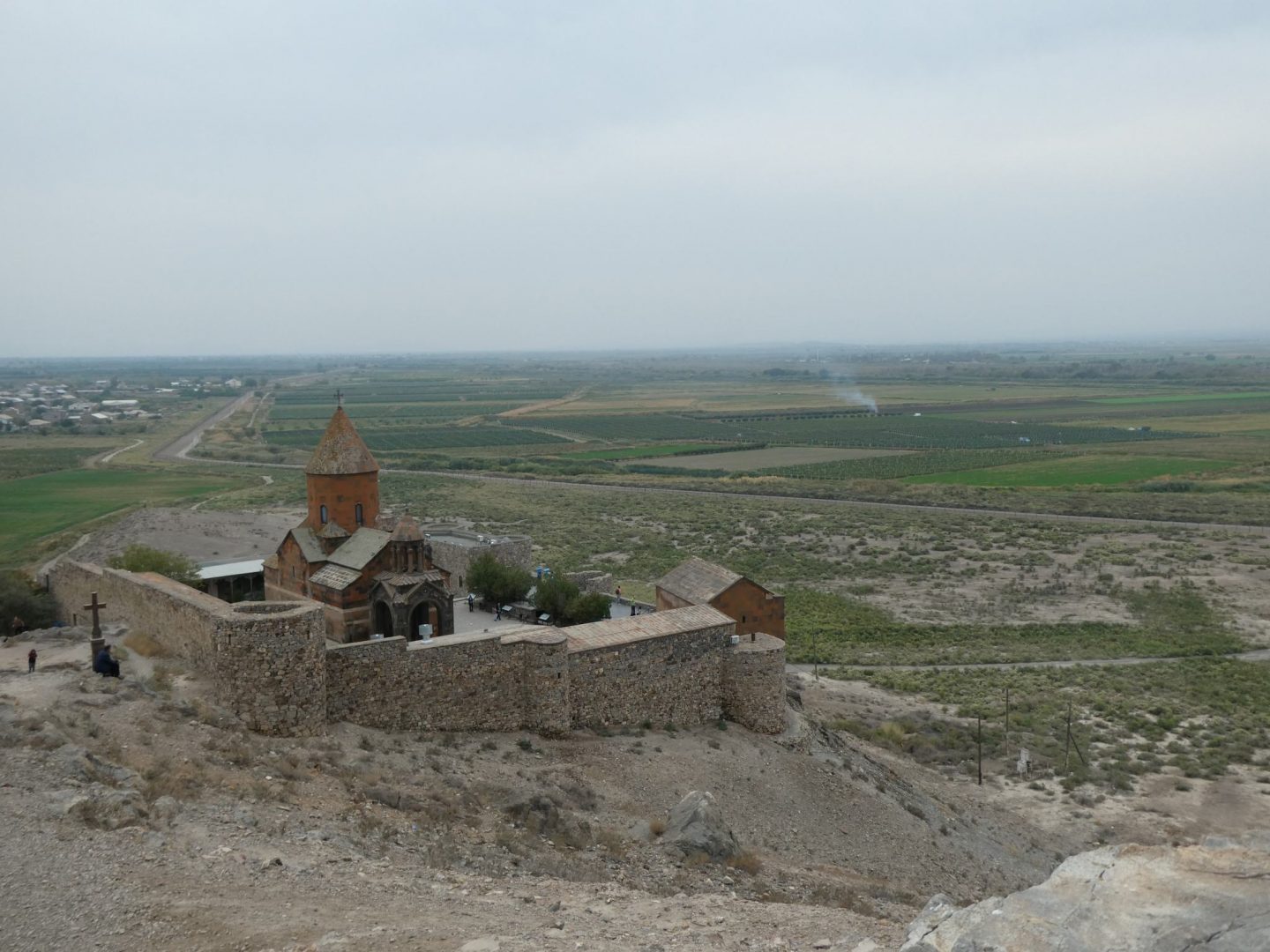 In the distance is Mount Ararat, the highest mountain in the Armenian Highlands.  In pre-Christian times it was considered the home of the gods.  When Armenia embraced Christianity, it became even more significant.

Christians identify Mount Ararat as the place where Noah’s ark came to rest after the Flood.  According to Armenian medieval historians, when Noah and his family left the ark, they settled on the Armenian plains below.  They later de-camped to Babylon but Hayk, a descendant of Noah, returned and established the community which in time became the Armenian nation.

This narrative therefore makes the Armenian plains the place where the human race was reborn.  And establishes them as having been the Armenian homelands since Old Testament times.  Accordingly, Mount Ararat is revered not only for its religious significance but as a matter of national identity.  It is the principal national symbol of Armenia and features on the country’s coat of arms.

Sadly for Armenians, Mount Ararat is on the Turkish side of the national boundaries forced on Armenia in the agreement reached between Turkey and the USSR in the 1920s.

Khor Virap is only 8km from the Turkish border and Mount Ararat is clearly visible from the monastery on clear days.  Unfortunately, the cloud and haze was thick when we visited.  We could just make out the mountain’s snowy peaks. 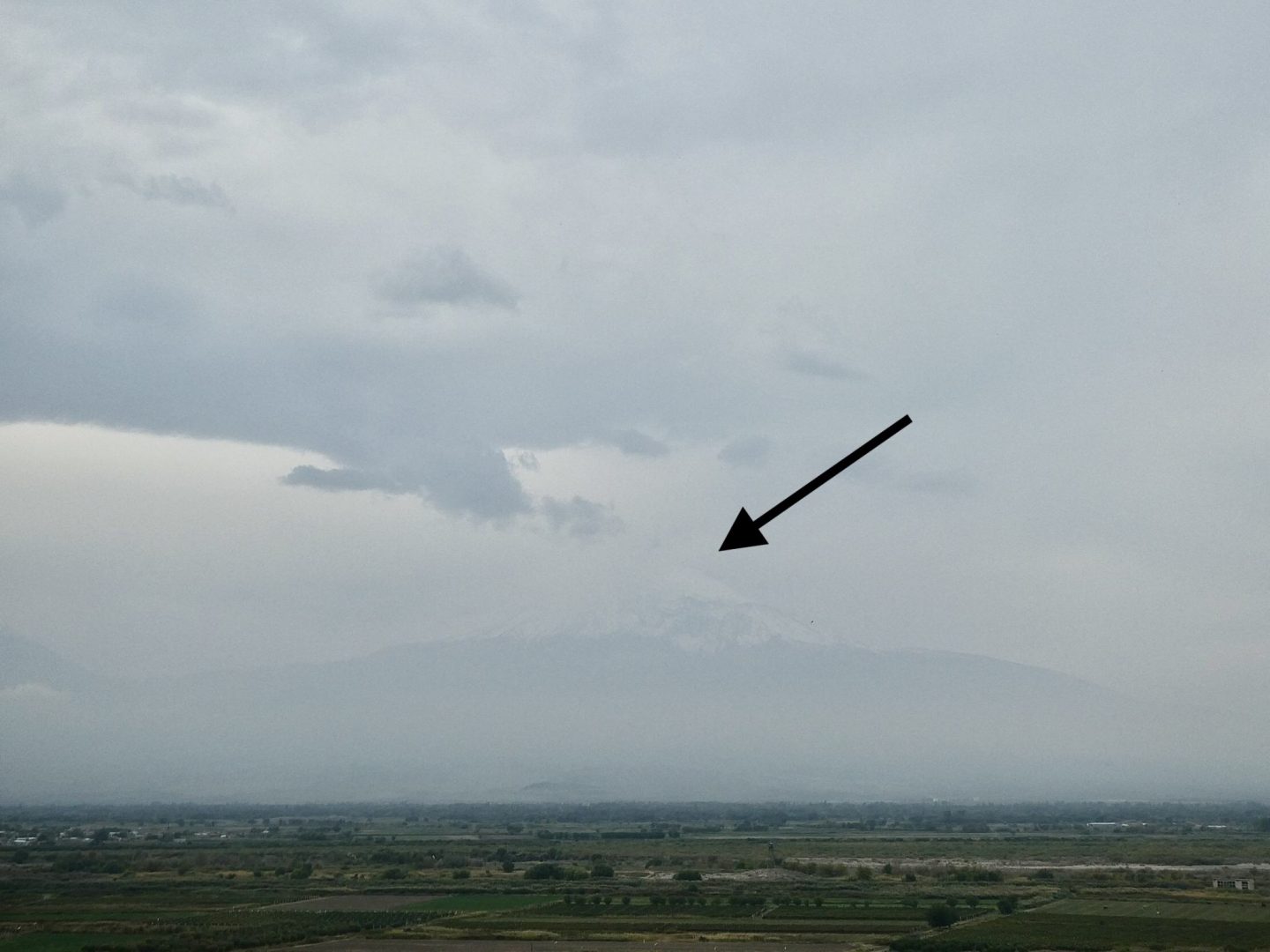 The temple of Garni is the only standing Greco-Roman collonaded building in the former Soviet Union.  It was probably built in the first century CE as a temple to the sun god, Mirh.

When Tiridates had his road to Damascus moment and the kingdom converted to Christianity, he had the temple converted to a summer palace for his sister.  Perhaps in gratitude for putting him onto Grigor and the cure for his insanity.

The temple comprised locally quarried granite and was constructed entirely without mortar.   That might explain why it collapsed in an earthquake in 1679.  The fallen blocks lay untouched for centuries until a major reconstruction between 1969 and 1975 which makes use of some of the original stone and some new ones. 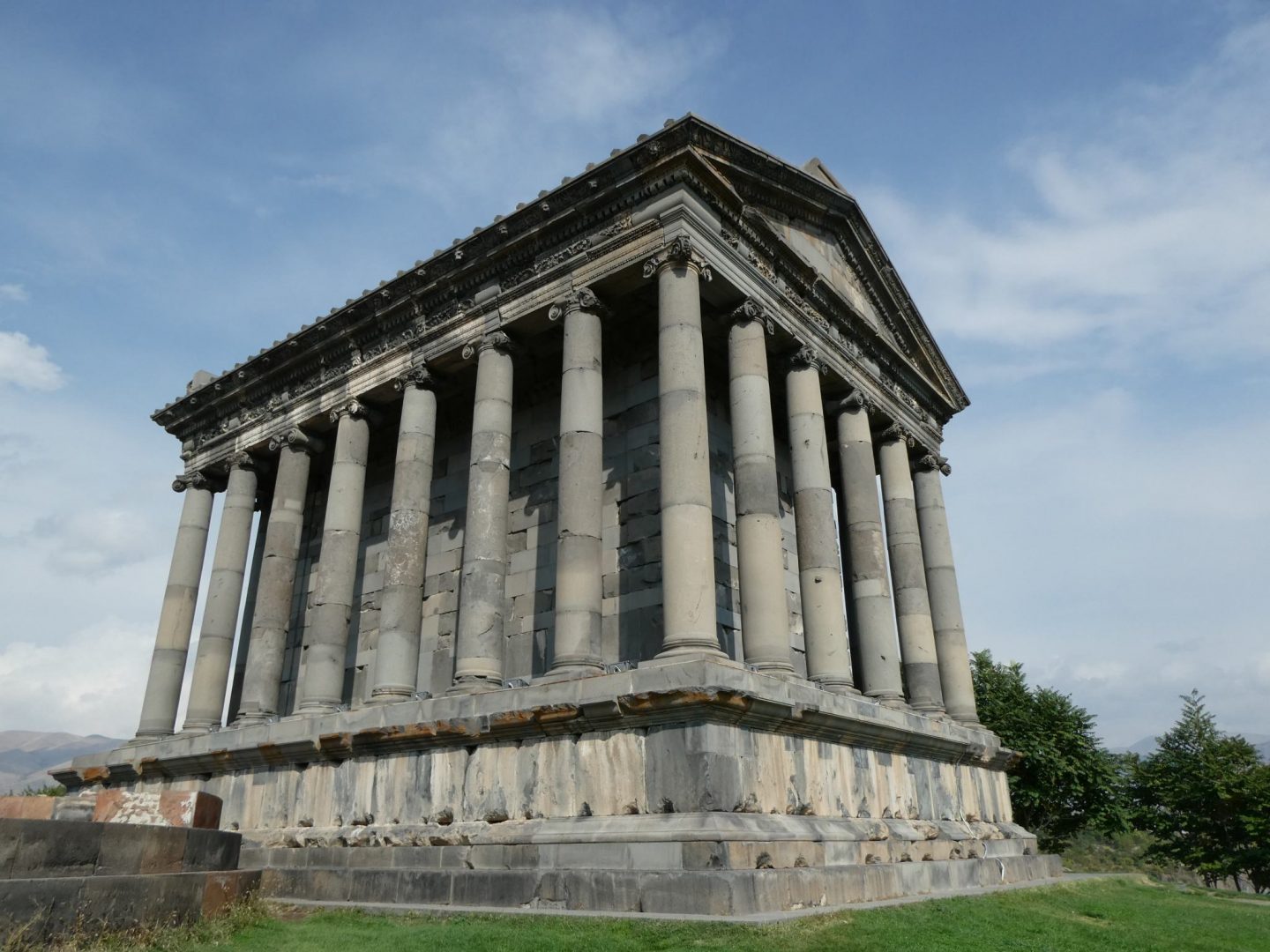 The reconstruction was so complete it’s hard to think of this as anything other than a new structure.  Nonetheless, the attention to authenticity was so good UNESCO awarded it the Melina Mercouri International Prize for the Safeguarding and Management of Cultural Landscapes for “measures taken to preserve its cultural vestiges, and the emphasis placed on efforts to interpret and open the site for national and international visitors”.

What’s more authentic is the remains of the royal bathhouse on the same site.And the views are unbeatable. 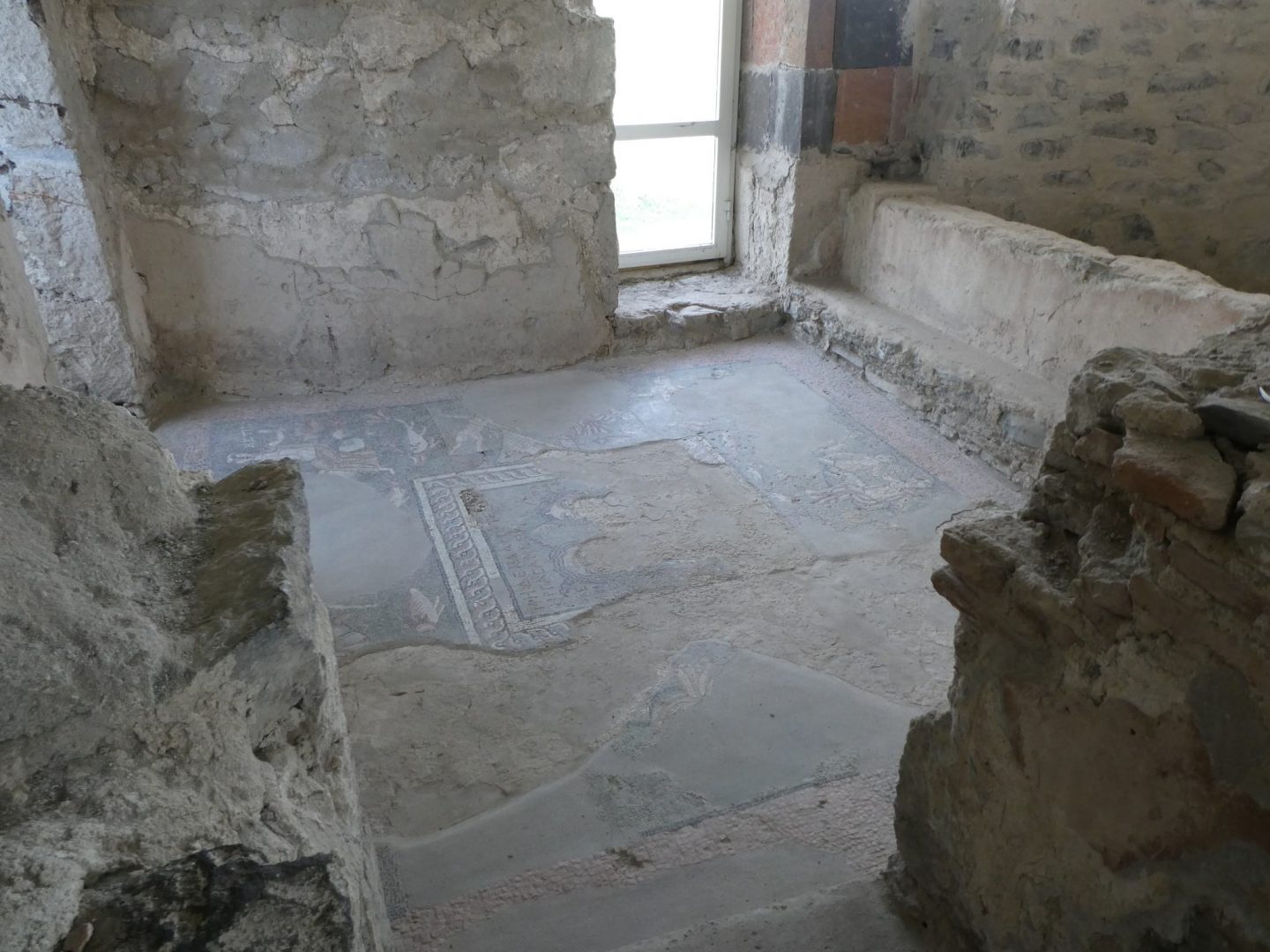 The temple has a panoramic view over the surrounding mountains and down below is an exposed swathe of columnar basalt which the locals call the Symphony of Stones. 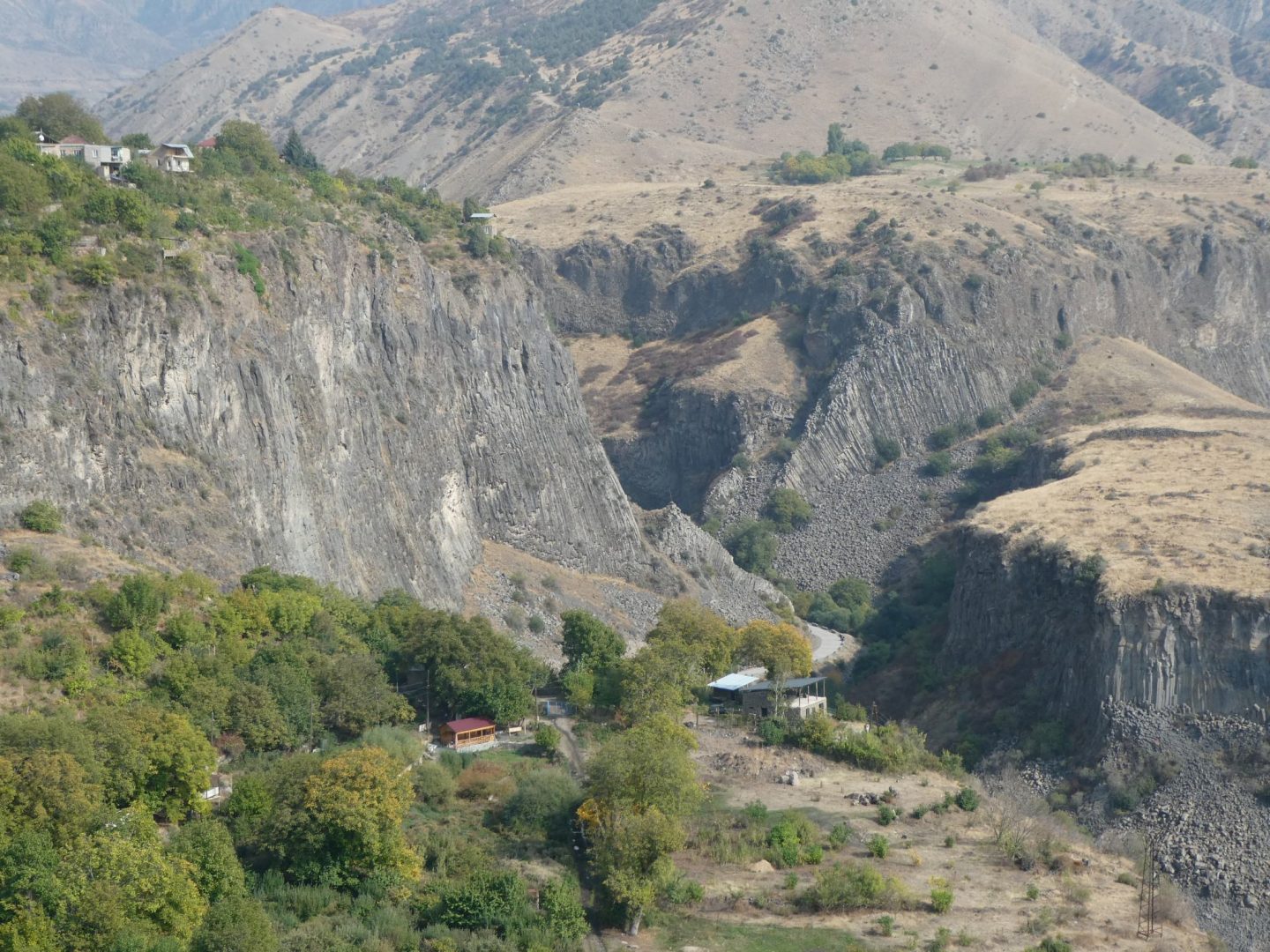 While Tirades III continued with kingly duties and his sister lolled around in her new summer palace at Garni, Gregory the Illuminator was busy illuminating.  Which is to say, criss-crossing the country converting pagans, co-opting pagan sites into the Christian tradition and establishing monasteries.

In the cliffs of the Azat Gorge about 10km from Garni, pagans worshipped at a spring inside a cave.  We aren’t sure whether Gregory evicted the pagans or converted them, but either way he established a cave monastery here.

Perhaps he’d grown to enjoy living in dark, confined spaces and thought others would too.  The monks here lived in cave cells hollowed into the mountain, some accessible only via ropes. 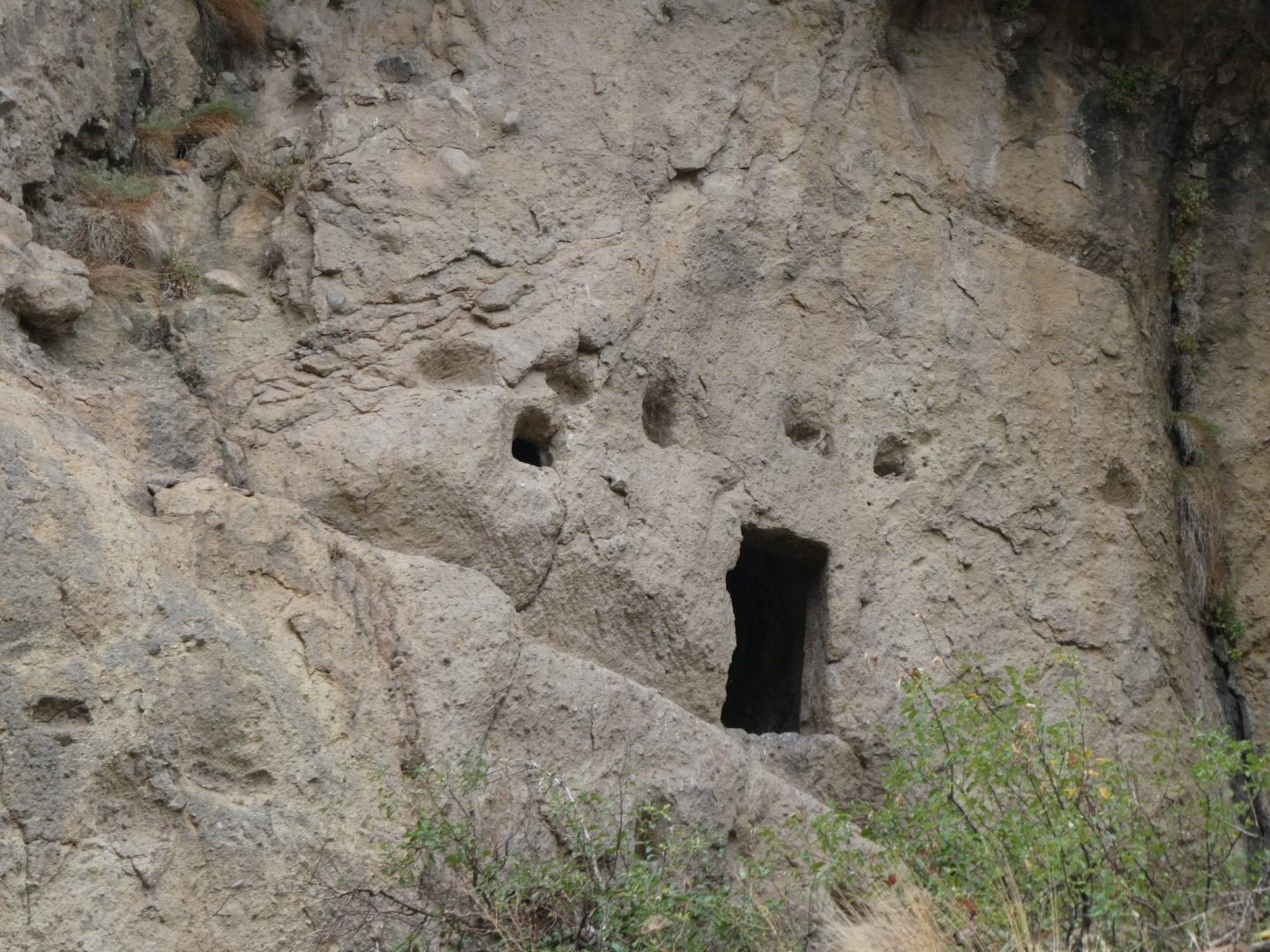 The original monastery was damaged by an earthquake and then sacked by Arabs in the 9th century.  A new complex was built in 1215, which is what can be seen today. 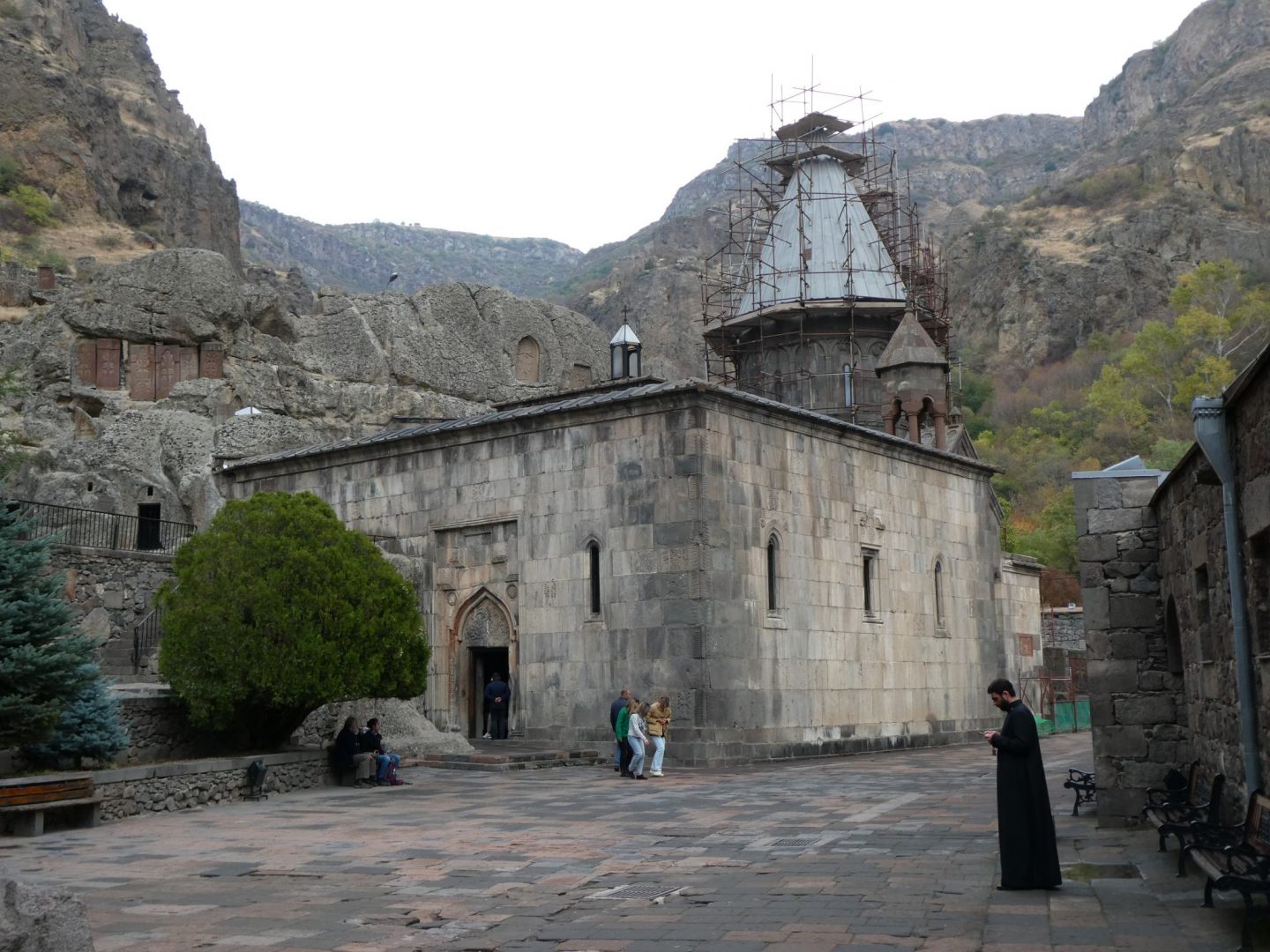 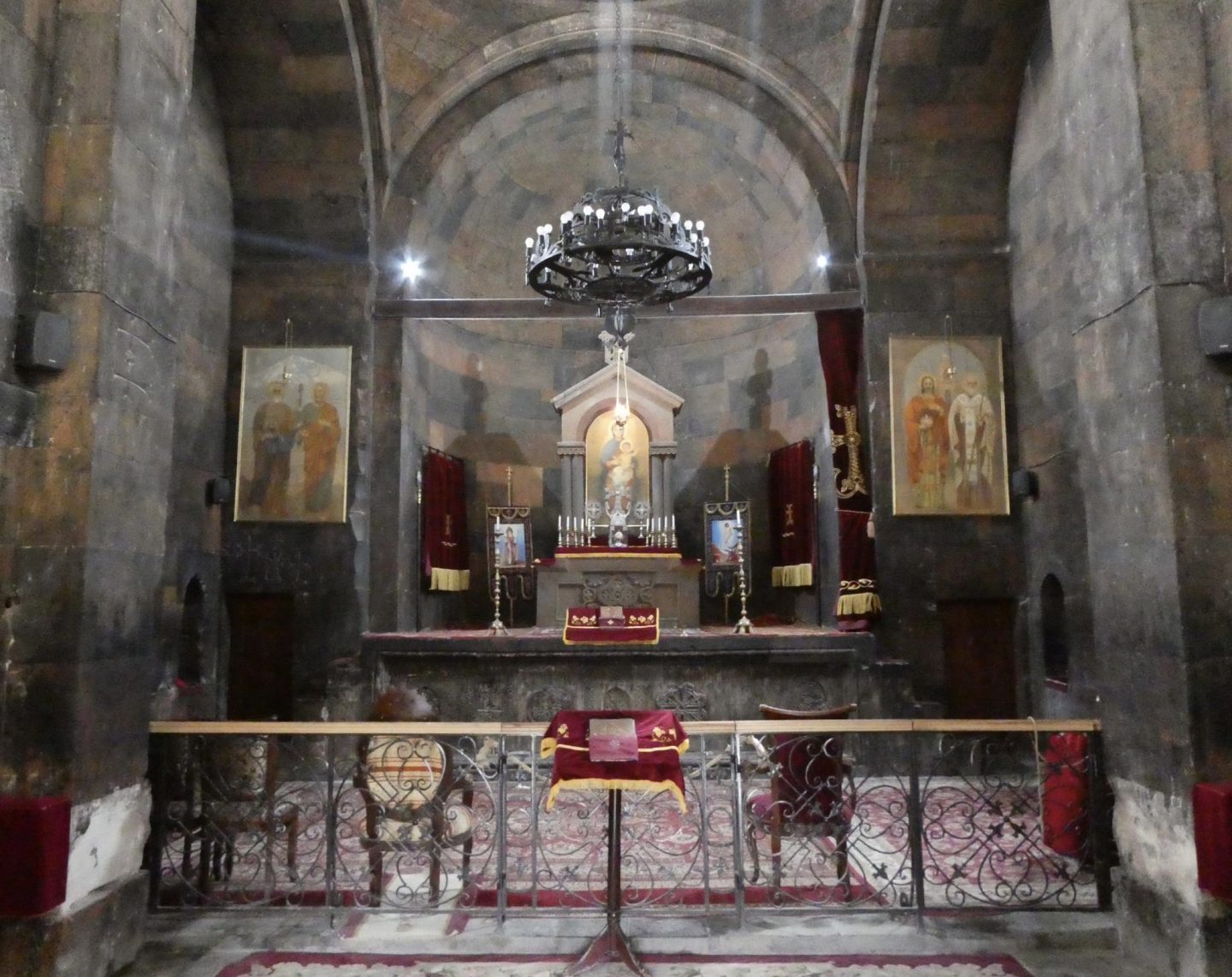 It gained great popularity as a destination for pilgrims because it housed various relics, most famously the tip of the spear used by the Roman soldier to pierce Christ’s side as he hung dying on the cross.  Yes, it’s true.  Someone had the foresight to save it.  The monastery’s full name, Geghardavank, means ‘Monastery of the Spear’.  Sadly, that relic is now in a museum at another monastery in Yerevan.

But the physicality of the complex built into the cliff in a spectacular setting continues to attract many visitors. 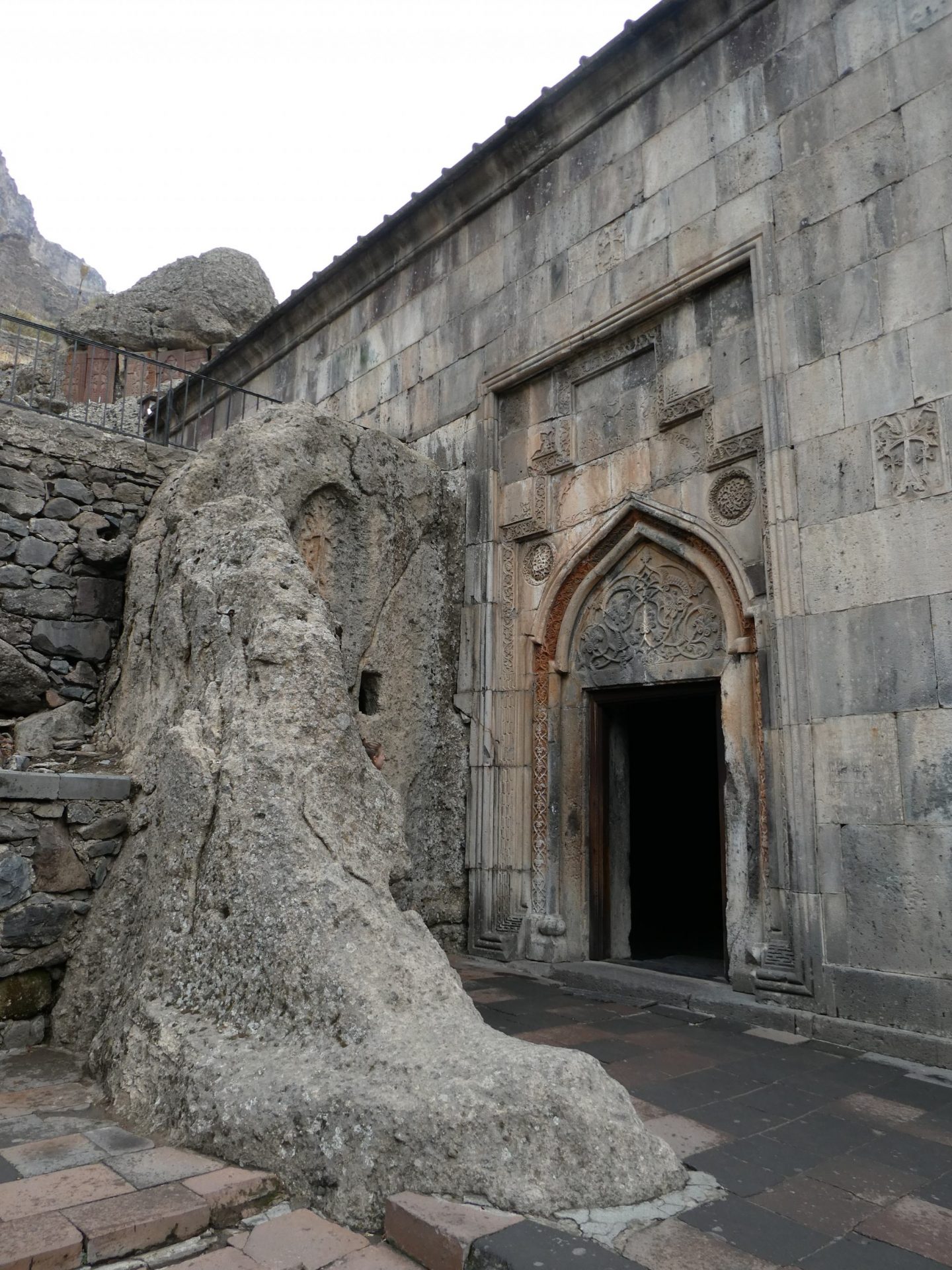 From inside the church, two chapels are carved into the cliff behind.  One contains the sacred spring and the other is a burial chamber. 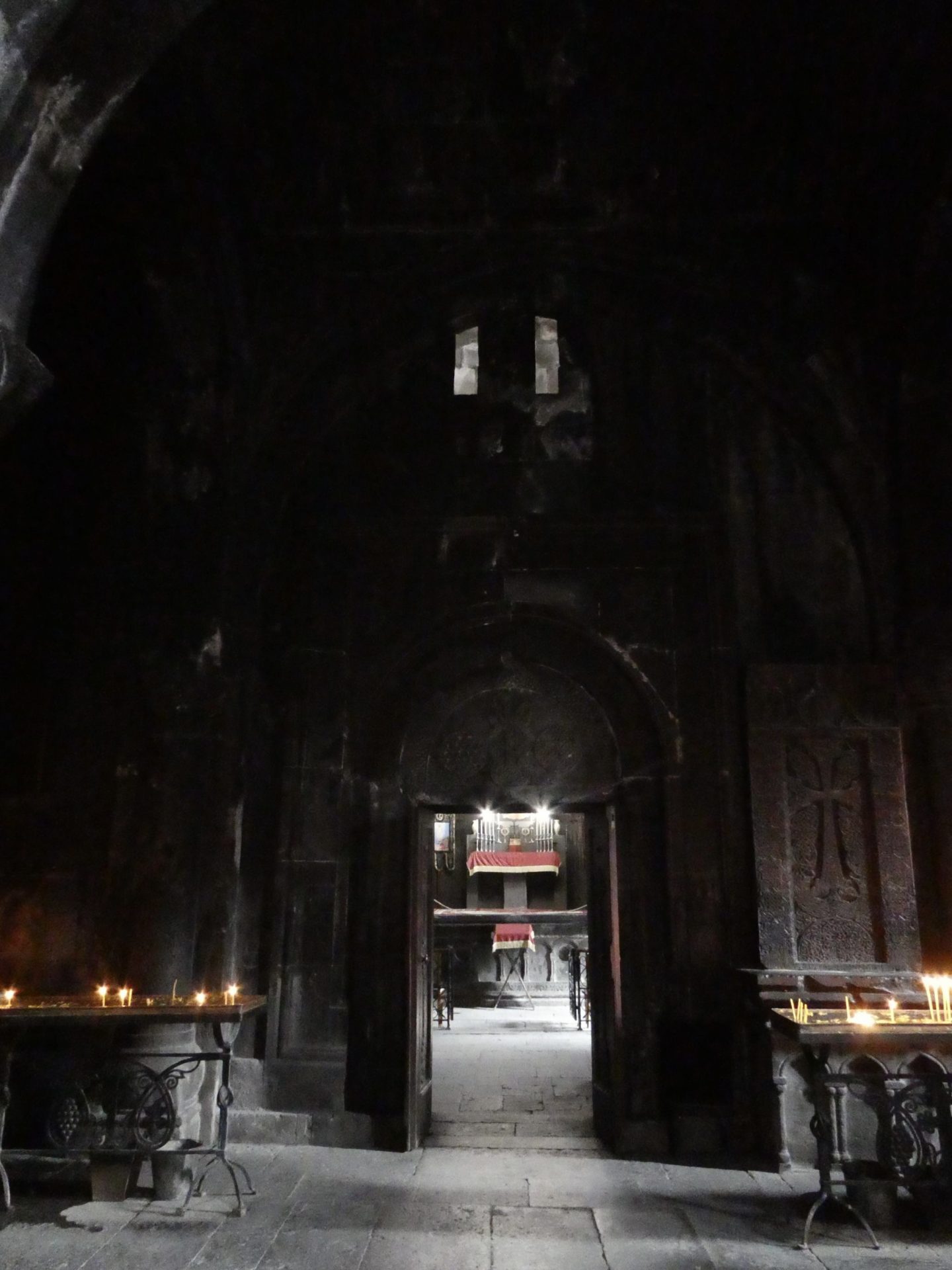 Around the back, steps lead up to monastic cells built in the 1200s with some elegant carvings and khachkars (memorial pillars carved with crosses and decorative motifs). 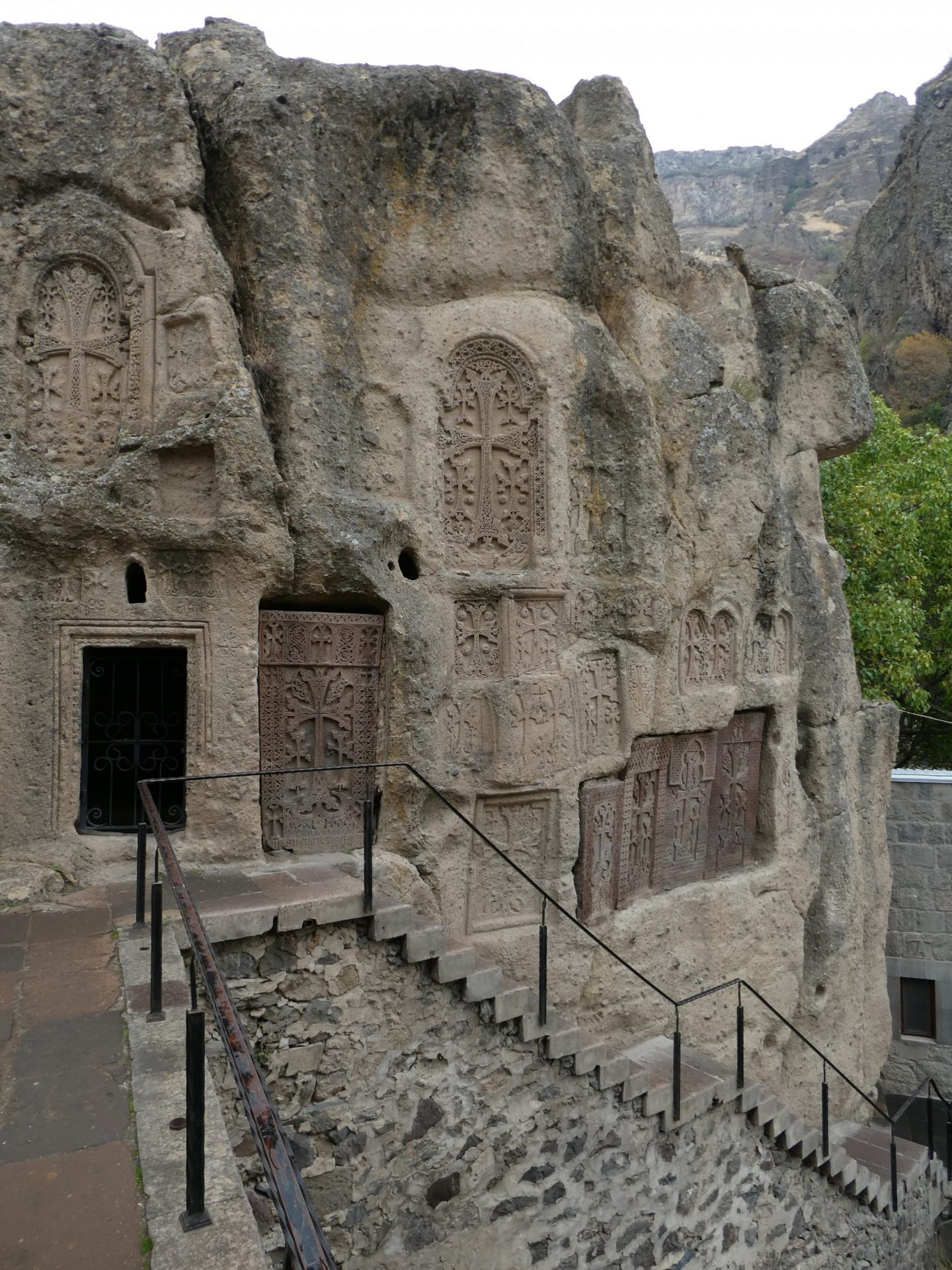 But enough of Gregory and his illuminating.  Next we headed to the far east of Armenia where the life of rural Armenians is very different to cosmopolitan Yerevan.