The town of Telavi, population 20,000, is the administrative capital of the eastern Georgian province of Kahketi and sits bang in the centre of the country’s prime wine growing area.

It’s a really pretty town on a ridge looking down to the Alazani Valley. 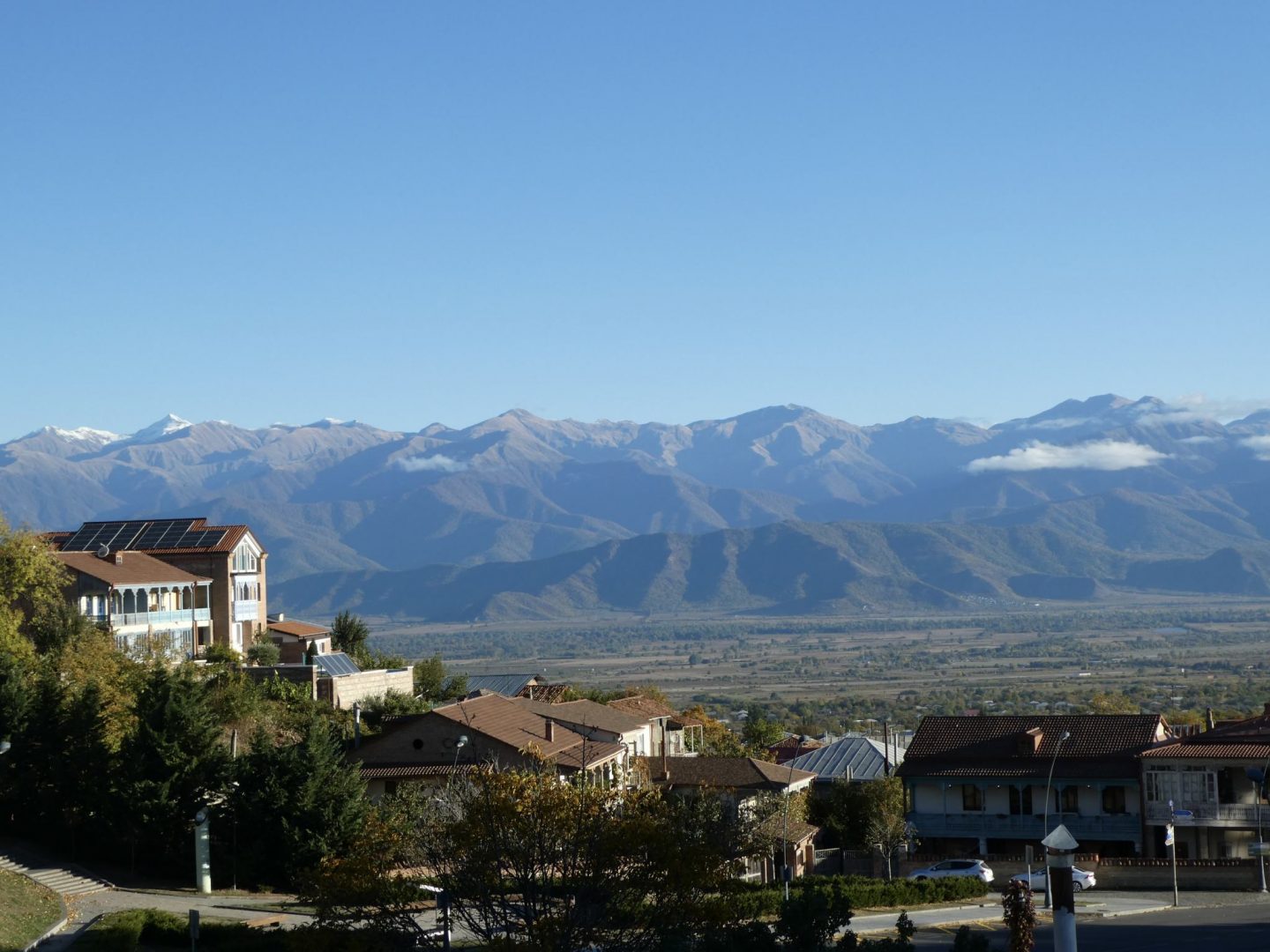 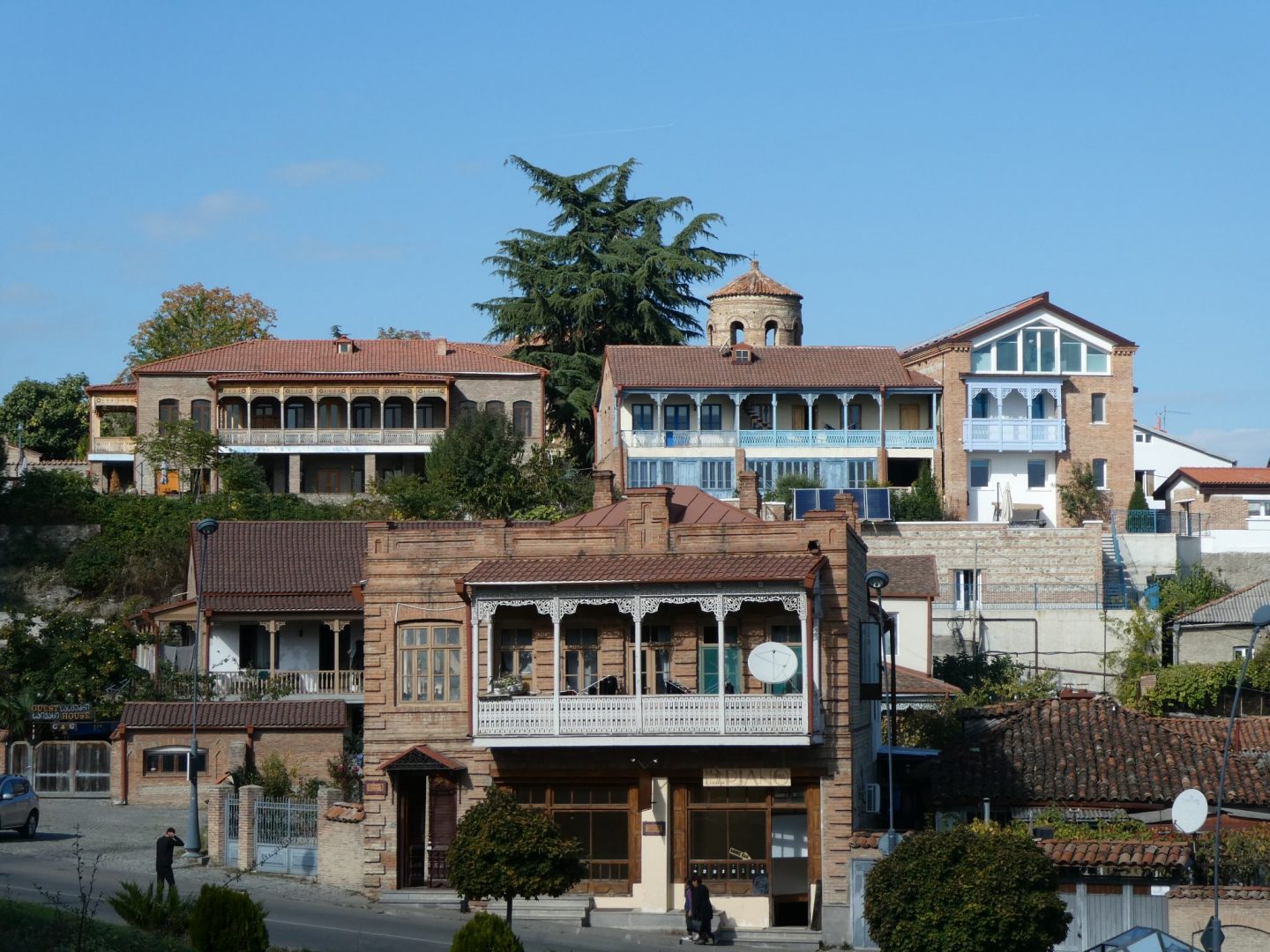 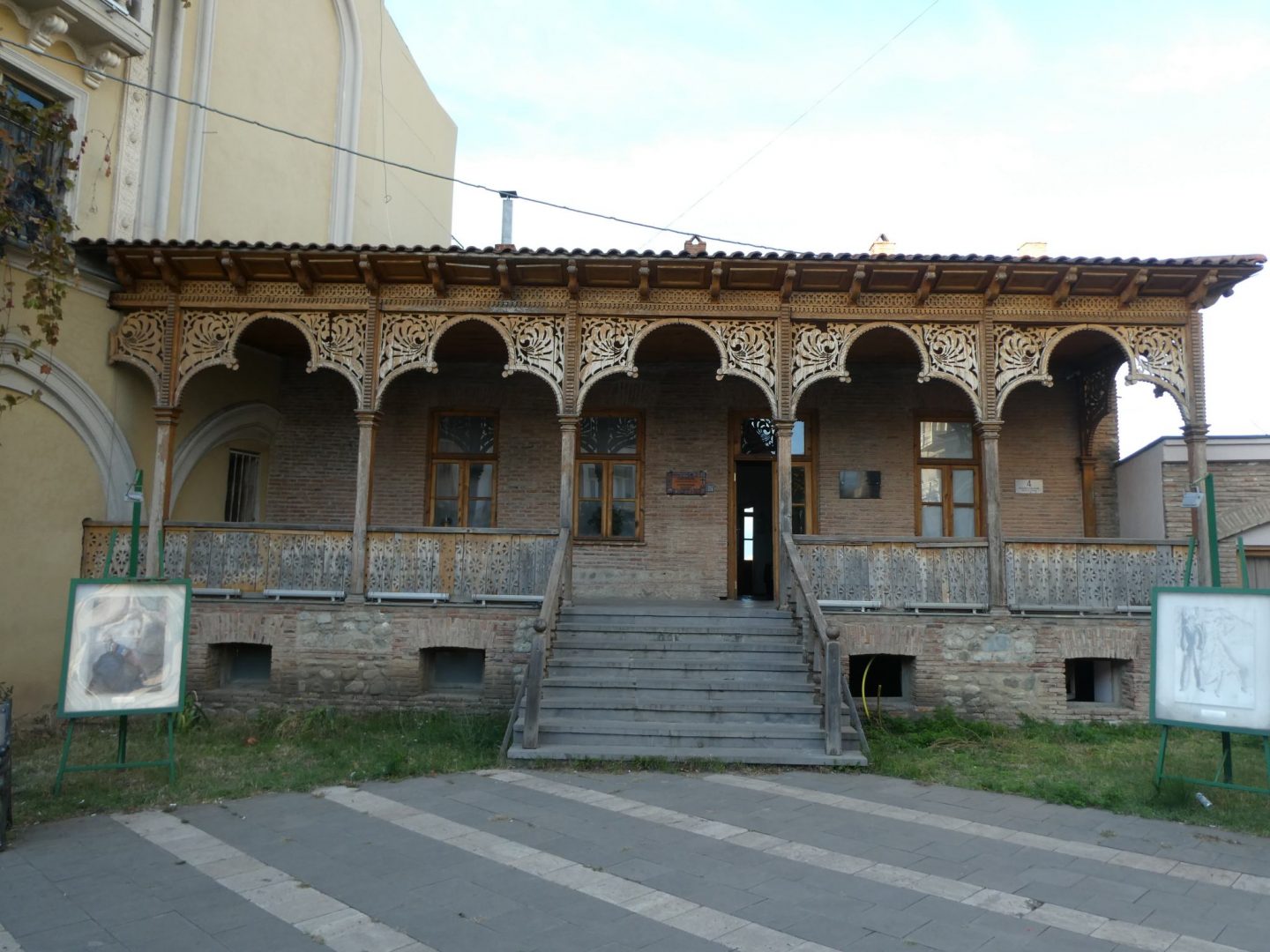 It’s been settled since the 10th century but ascended to particular prominence as capital of the Kingdom of Kahketi in the 17th century.  Every kingdom needs a castle.  Batonistsikhe, which translates as ‘the Master’s Fortress’ was built between 1667 and 1675 as the main residence of the Kahketi kings until the Russian Empire swallowed Kahketi in the 1800s.

Unusual for the region and time, the palace was Persian style, modelled on the Arg of Karim Khan in Shiraz in what is now Iran. 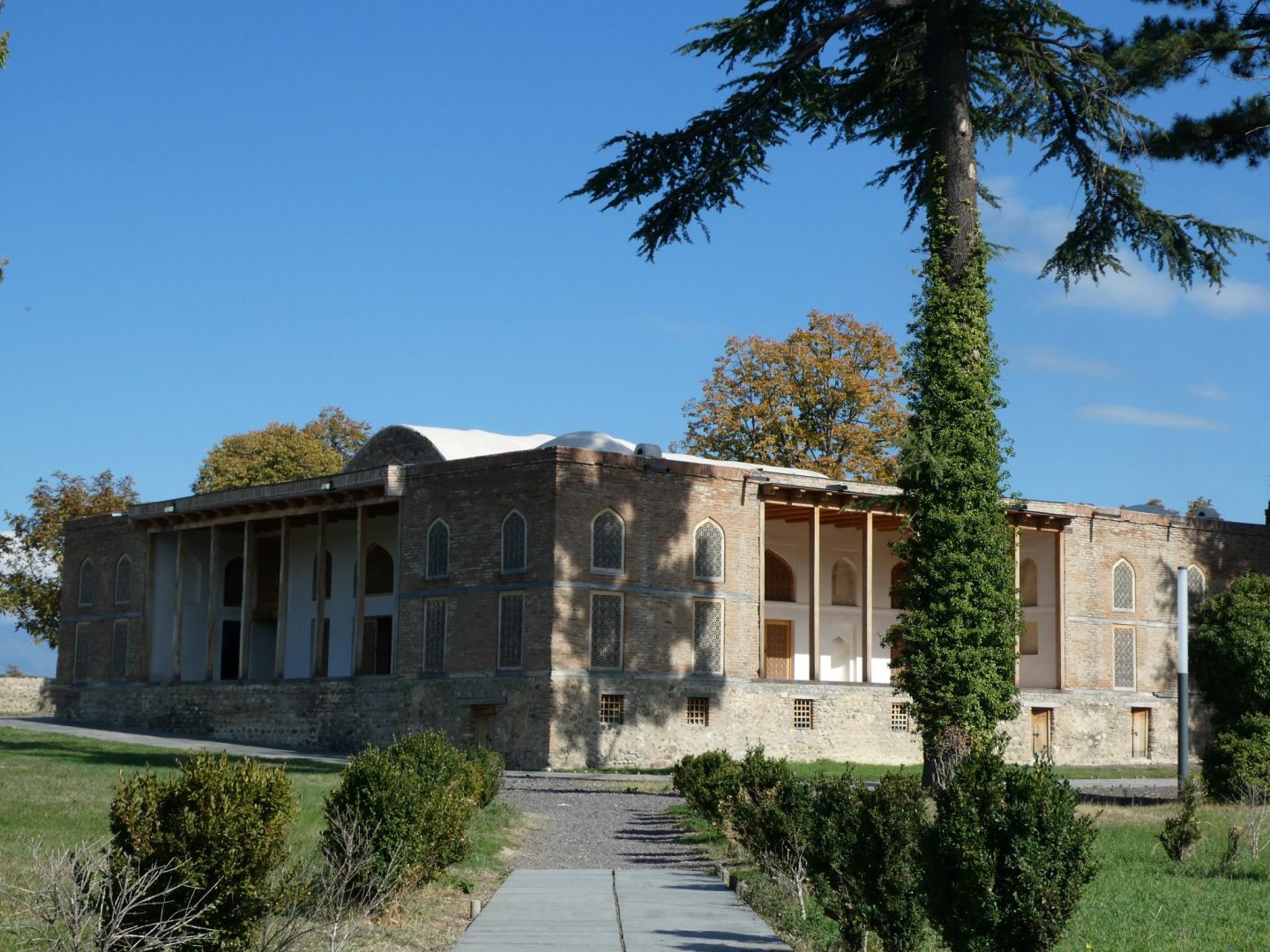 The Kingdom reached the height of its power in the 1700s under King Erekle II.  He was born and also died in Batonistsikhe.  During his reign, the castle was fortified to protect the city and its people against invaders. 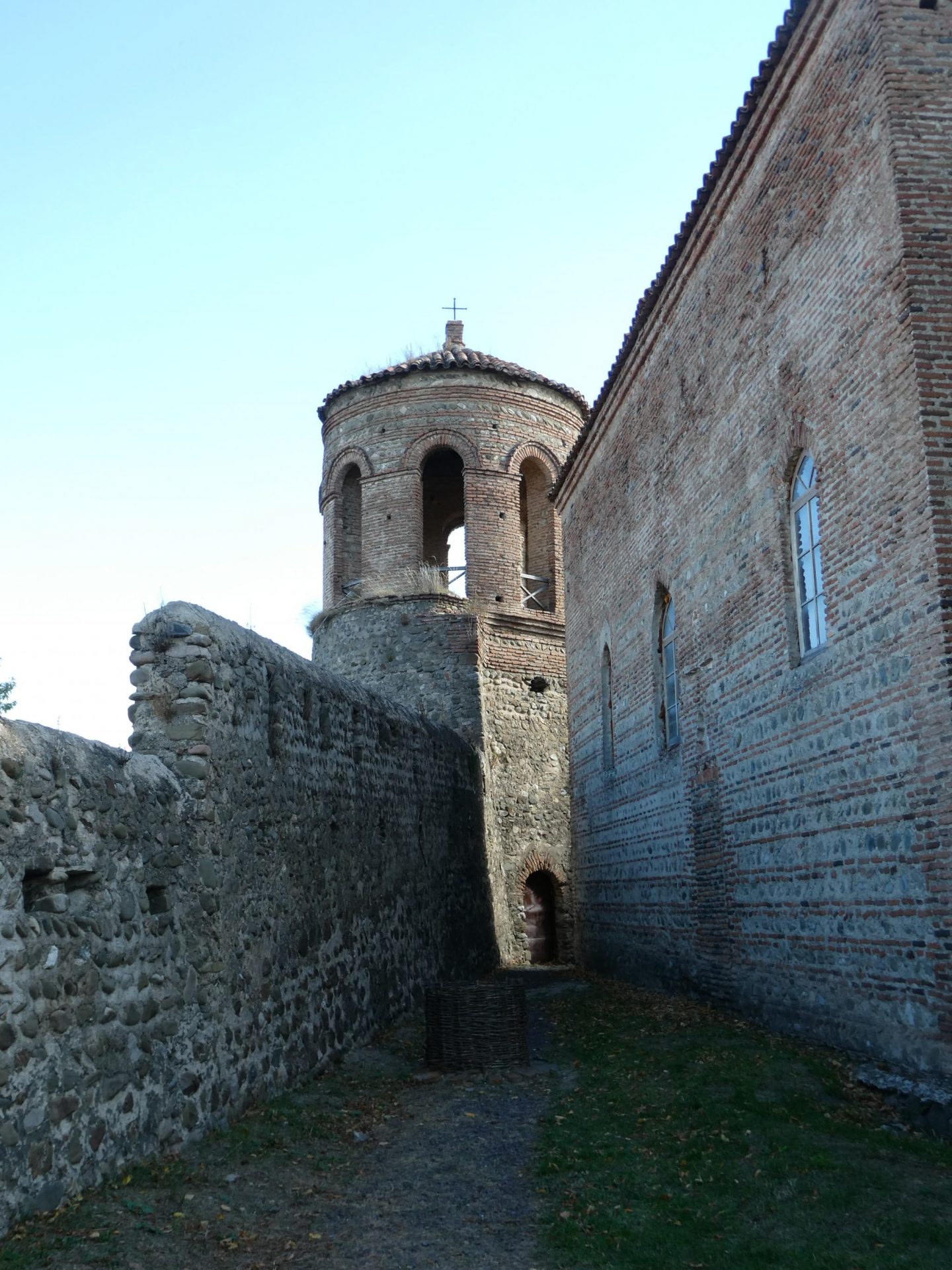 A statue of Erekle II next to the fortress wall looks out over his former dominion. 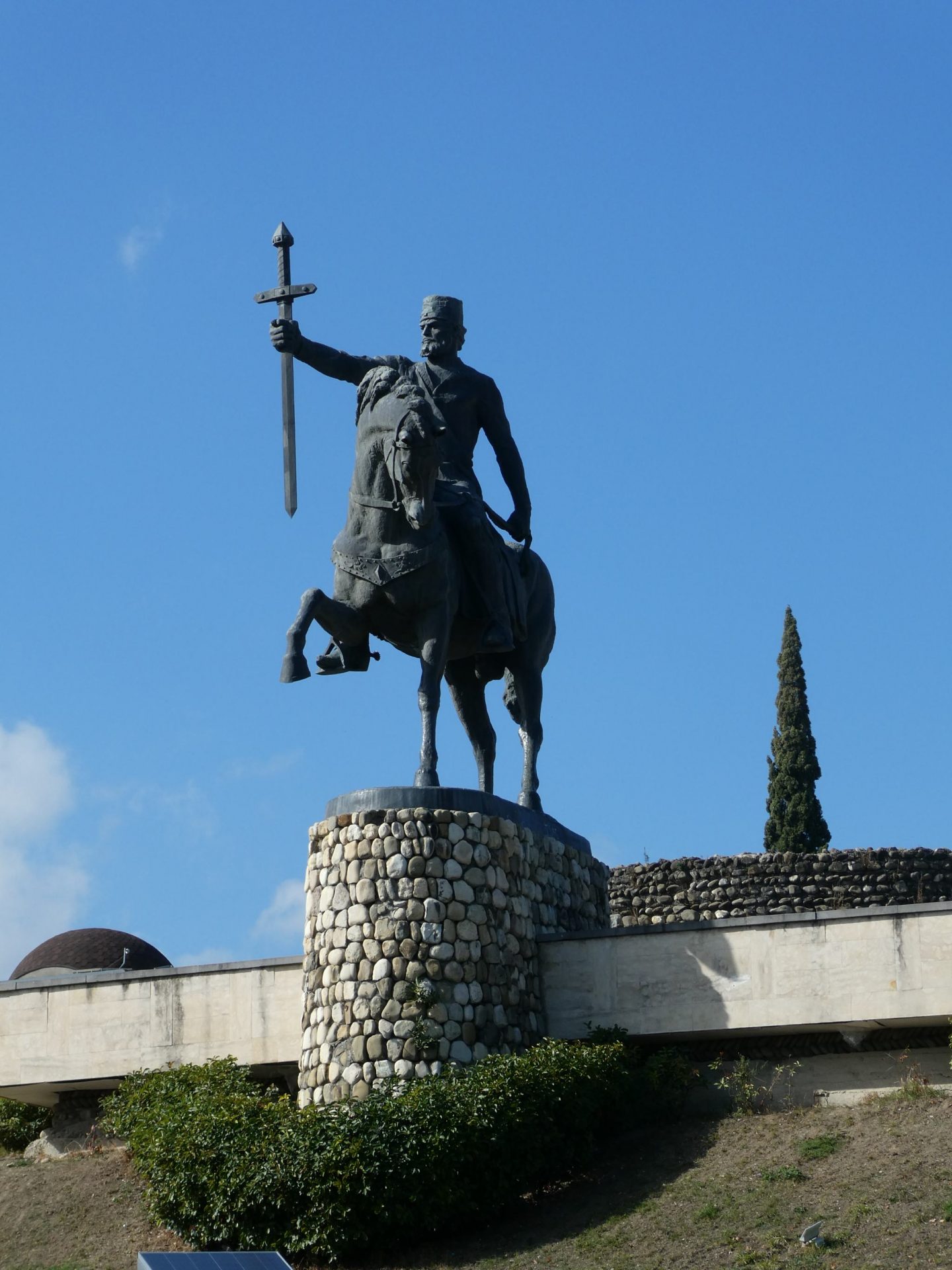 Even older than the castle is this 900 year old giant plane tree. 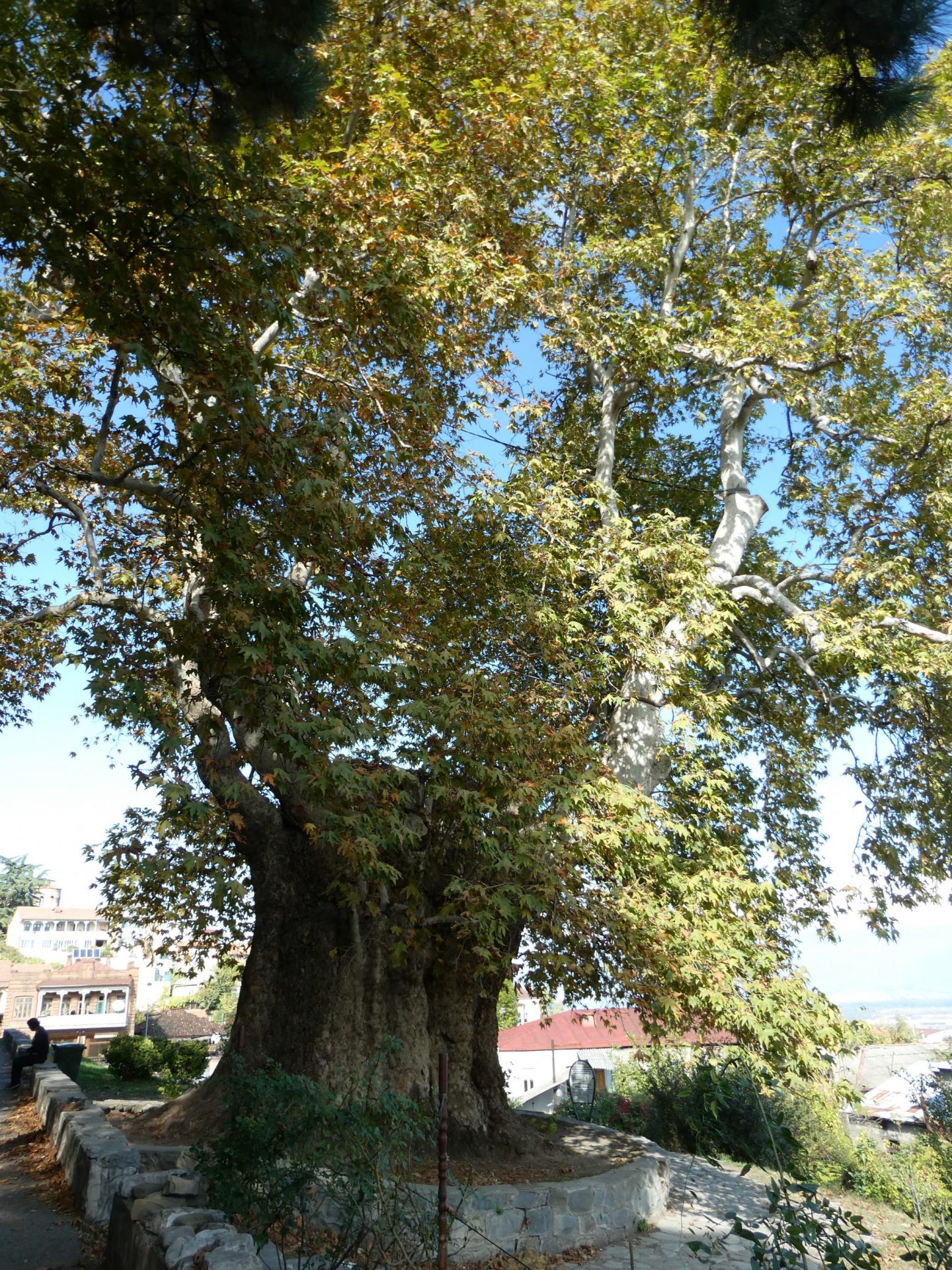 They’ve been making wine in the Alazani Valley since …. well, let’s just say Georgians are very serious when they tell you they invented wine making.

And they may well be right.  Archeologists have found evidence of wine production in this area dating back to 6,000BCE.  Wine is still made here using traditional techniques and Telavi is a great place to experience them.

Two things distinguish traditional Georgian wines from those of other countries.  The first is the use of grape varieties indigenous to Georgia: Rkatsiteli, Kisi and Mtsvane for whites and Saperavi grapes for red.

The second is the technique.  The wines are fermented in egg shaped vessels called qveri, and there’s an art even in the production of those.  Such is their uniqueness and importance to the history of wine production that UNESCO has placed qveri on its Intangible Cultural Heritage List.

Qveri are made from terracotta using a very precise technique and shape to achieve the required tension and strength for use.  They range in size up to 2,000 litres capacity.  These big ones will take three months to make and seven or eight days to fire.  While still warm they are lined with beeswax which plugs the pores and creates a sterile environment. 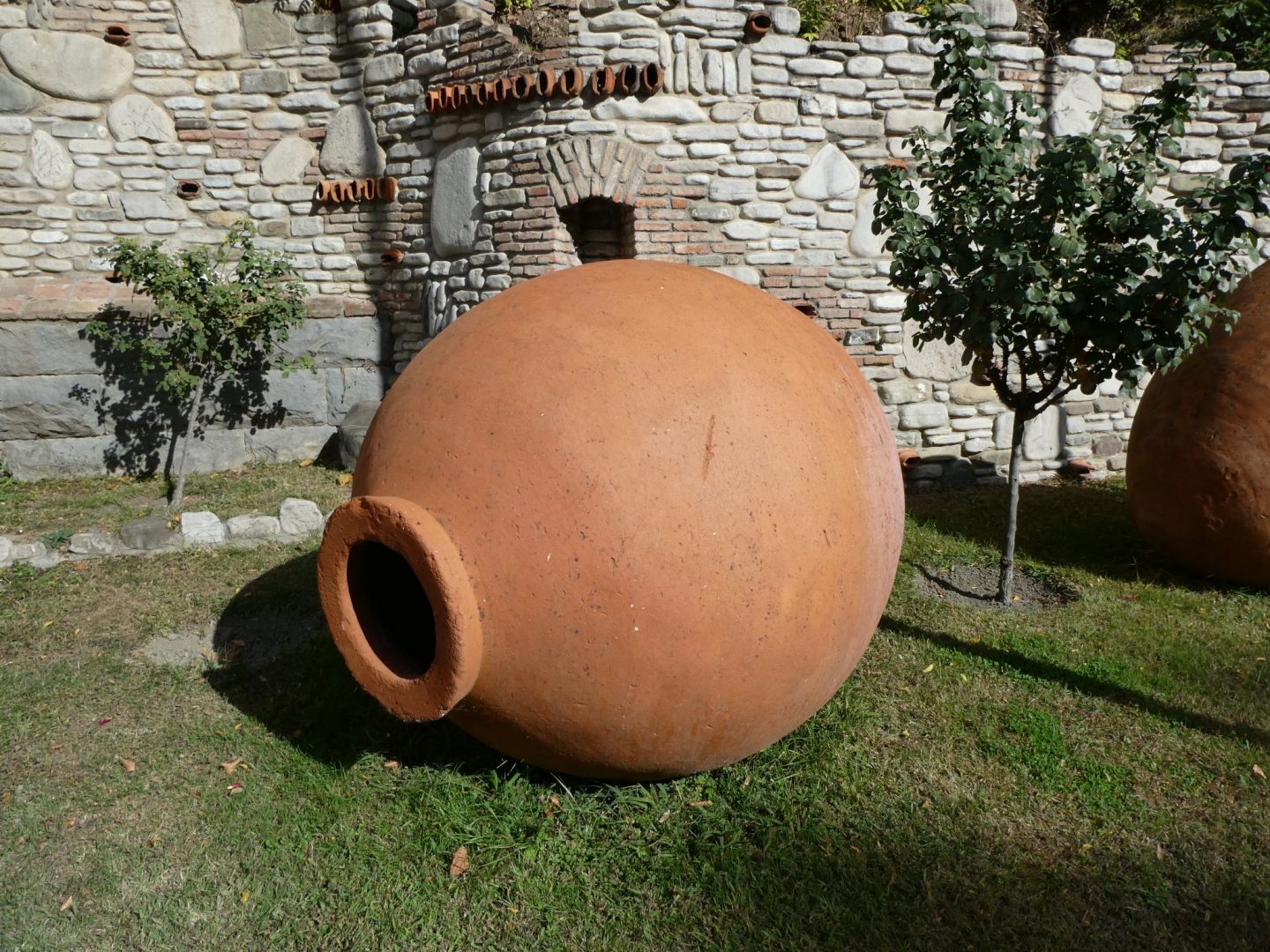 The qveri are then set in the ground ready to be used.  Qveri means ‘that which is buried’.

We visited a wine maker on the edge of Telavi who explained the whole process.   While techniques vary a little between producers, here’s the basic rundown.

First the grapes are crushed by hand in hardwood tubs. 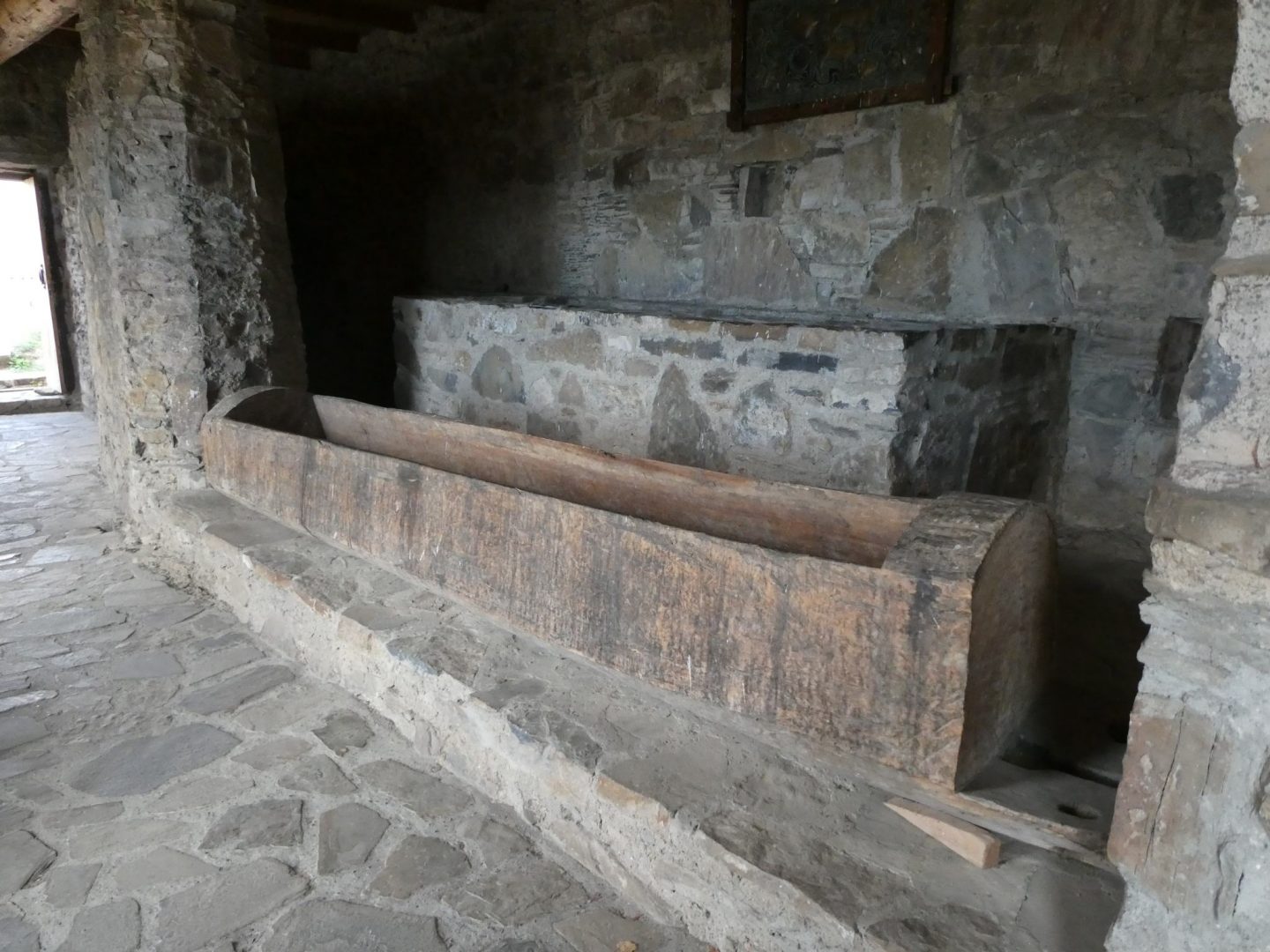 Then they are transferred to the qveri complete with skins and stems. 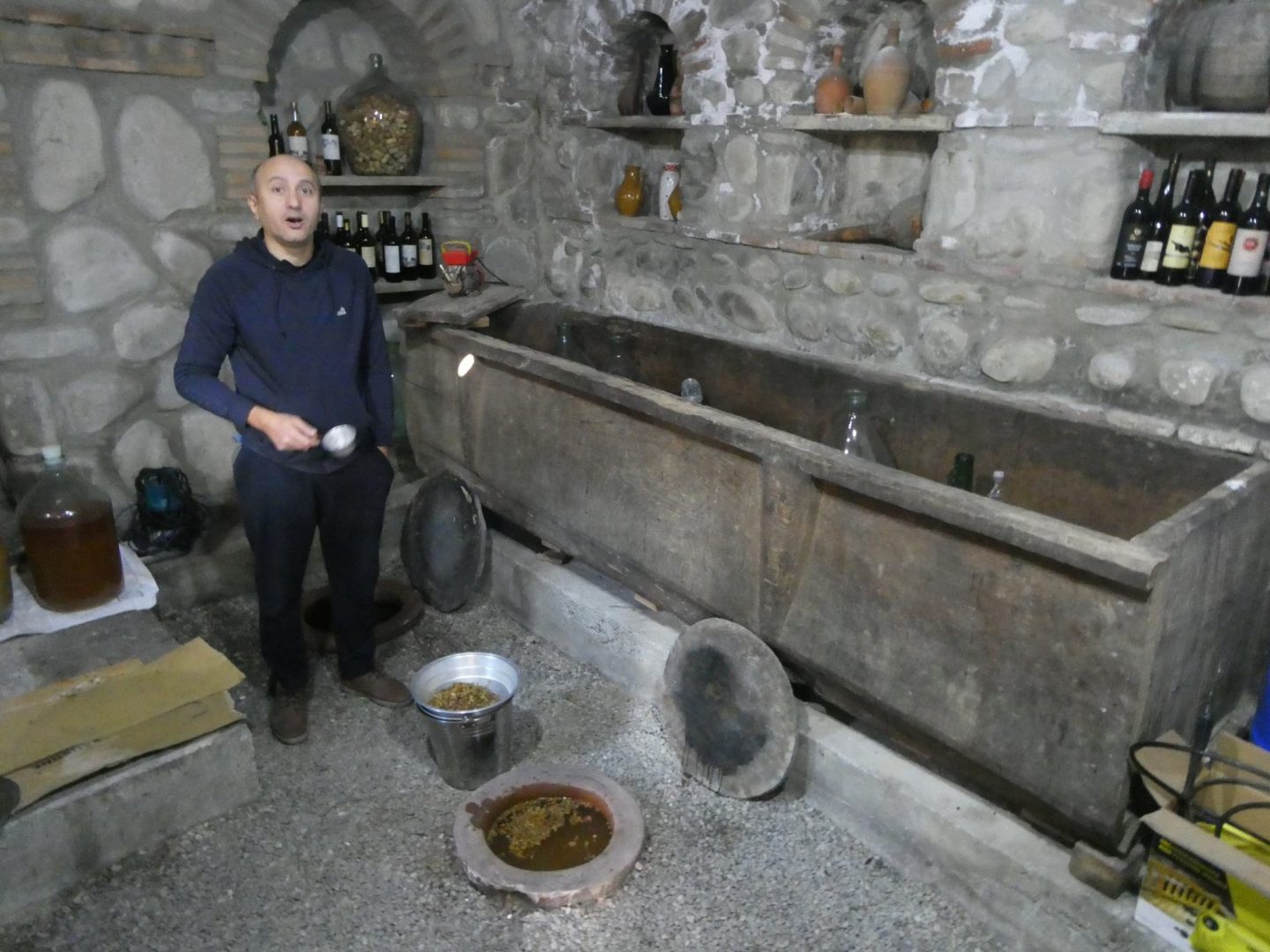 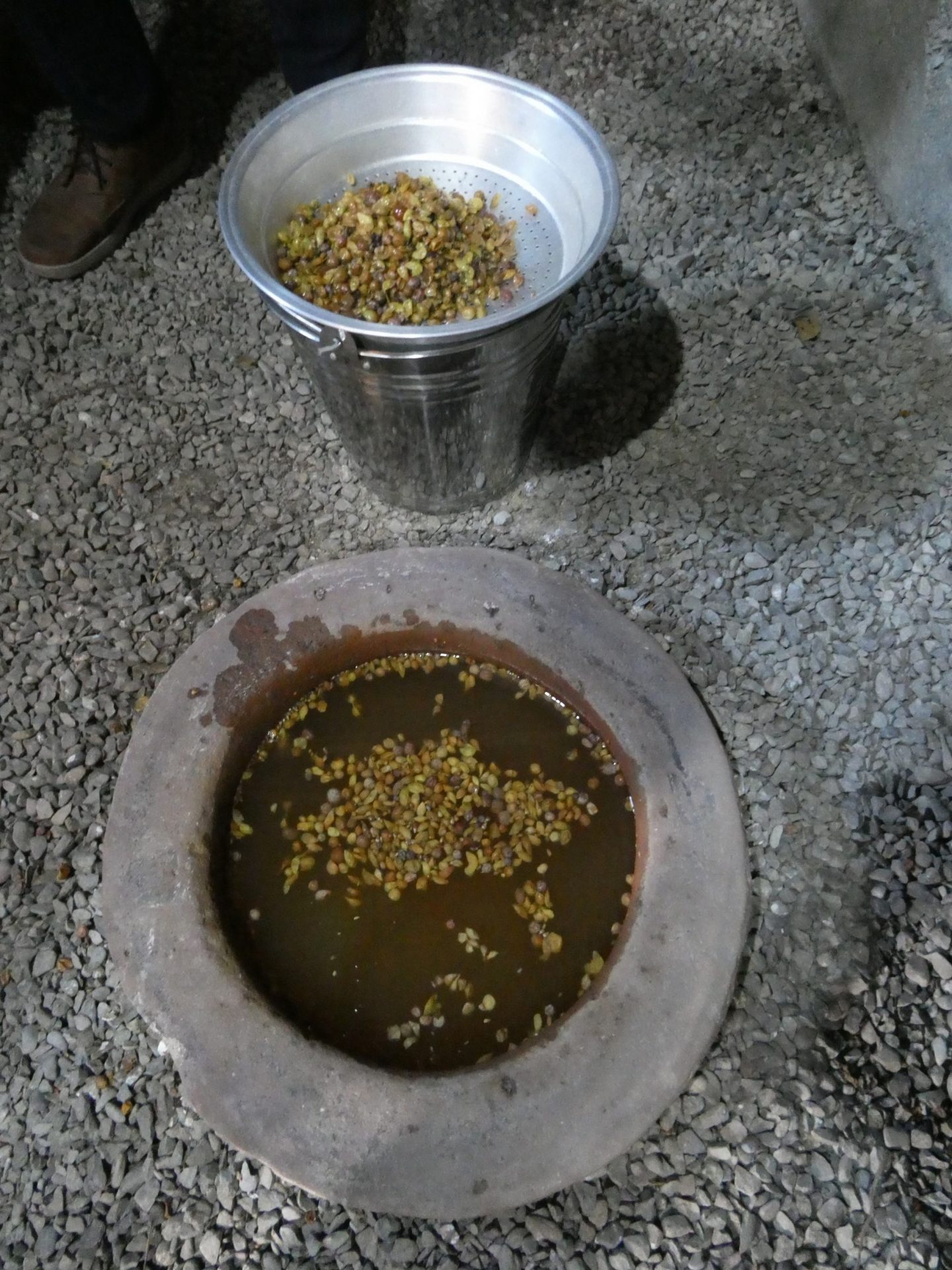 The qveri is left uncovered and fermentation begins within a few days.  The fermenting grapes are ‘punched down’ twice a day for a few weeks.

The qveri is then sealed with beeswax and a hard cover is screwed over the top.  Malolactic fermentation spontaneously begins.  Over time the solids sink.  Because of the egg shape, once they slide to the bottom they have little contact with the wine.

After about six months, the wine is removed, strained and bottled.  The solids are kept separate.   The qveri is scrubbed out with a long handled brush made from compressed cherry tree bark ready for the next batch.

The solids are distilled in one of the contraptions in the photo below to make chacha, also known as ‘vine vodka’.  Flavours of fruit, honey or spices may be added afterwards.  Some are nice.  Some are lethal.  Like the disgusting mushroom vodka we foolishly tried in Estonia, some are definitely an acquired taste. 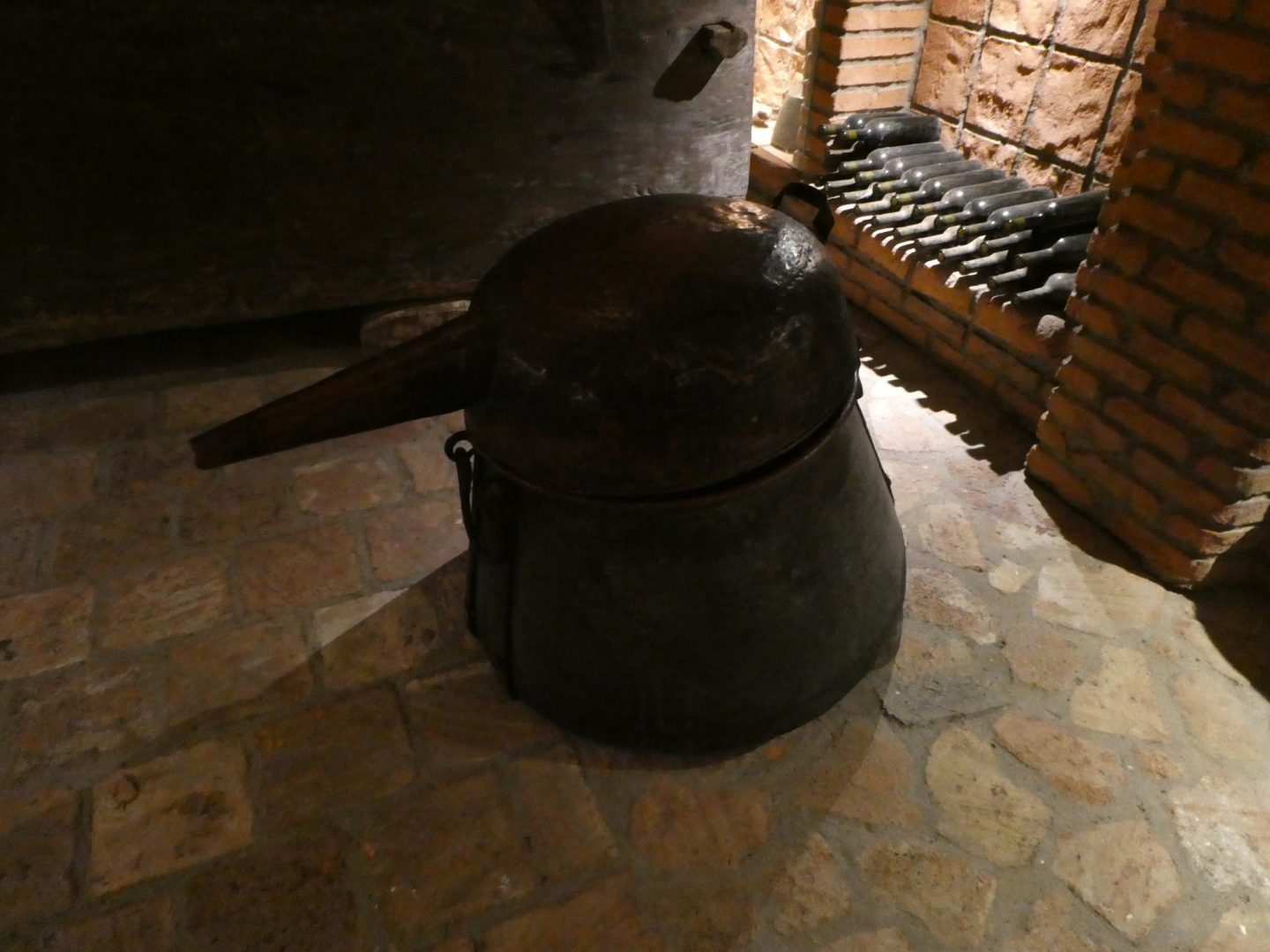 After showing us how it’s all done, we sat down with the winemaker in his little stone wine room for a tasting and he told us about his family’s winemaking history.  Six generations of his family had been making wine here since 1800.  In the Soviet era, collectivisation meant they lost their land.  When communism fell, there was no compensation or restoration but over time he, together with his parents and uncle have been able to buy back some of their family’s old land.  They are producing wine again. He works a day job in IT but hopes to be full time winemaking soon.

It was a really interesting afternoon and his wines were really good.  If you are in the area, look him up.  His winery is Rostomaant Marani. 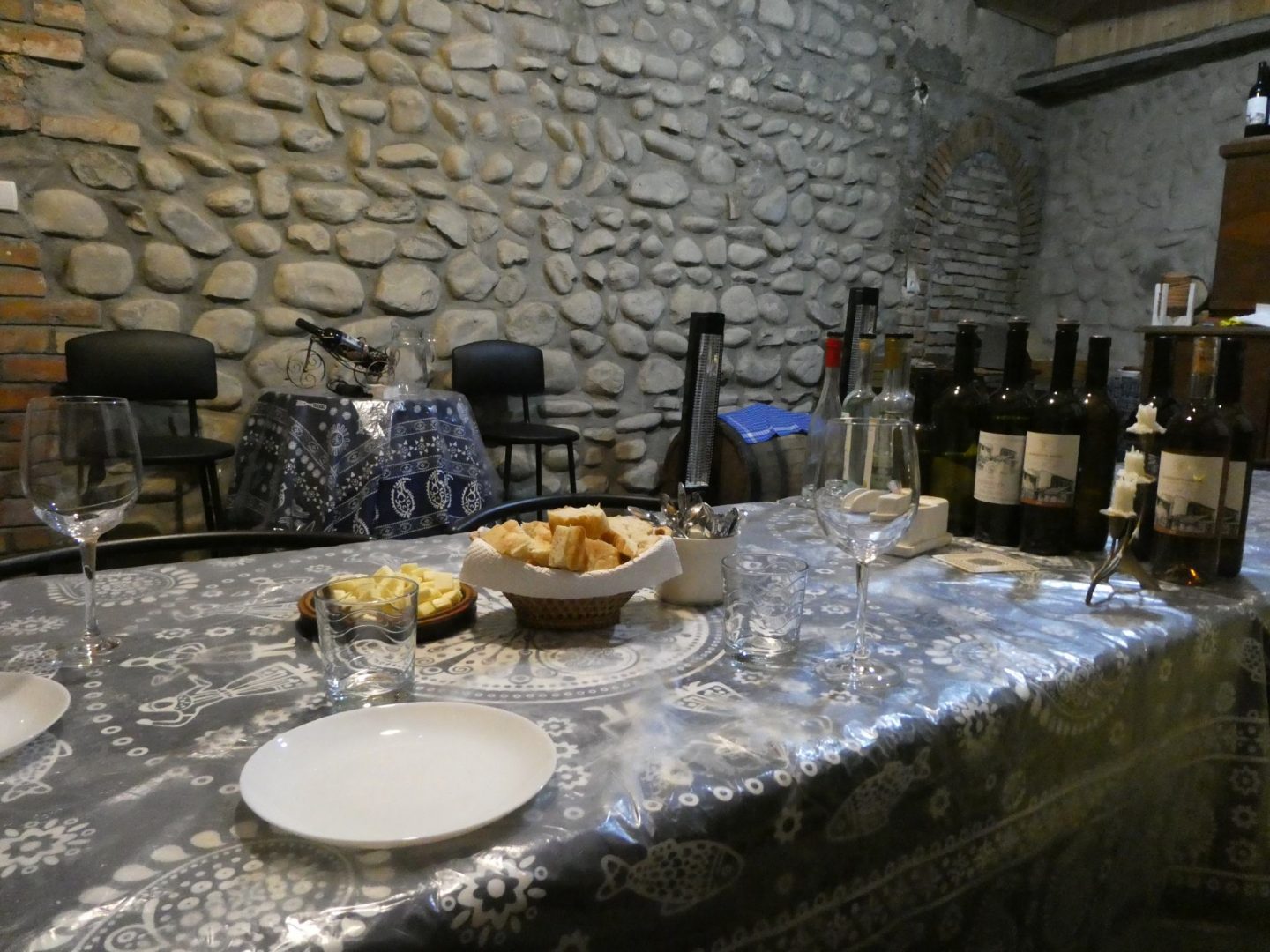 Georgian drivers are far more sensible than their Armenian neighbours.  We hired a driver to take us to a few sights out of town and, of course, to visit a couple of bigger wineries.

First stop – Tsinindali Estate, built by 19th century Russian-born Georgian poet and army colonel, Prince Alexander Chavchavadze, the ‘father of Georgian romanticism’.  Chavchavadze married a Georgian princess and established a lavish Italianate estate and vineyard on land he inherited from his father just outside Telavi.   He had travelled extensively in Europe and is credited with being the first to make wine in Georgia using European methods.  He was also quite the collector and the estate has a horde of about 16,500 historic bottles dating back to 1814.

The estate was nationalised during Soviet times and used as a hotel.  Somehow his wine stash survived.  The hotel is now a Radisson and the winery still operates.  The historic house is now in some sort of trust managed by his descendants.  It’s been restored and furnished with family heirlooms.  No photos are allowed inside. 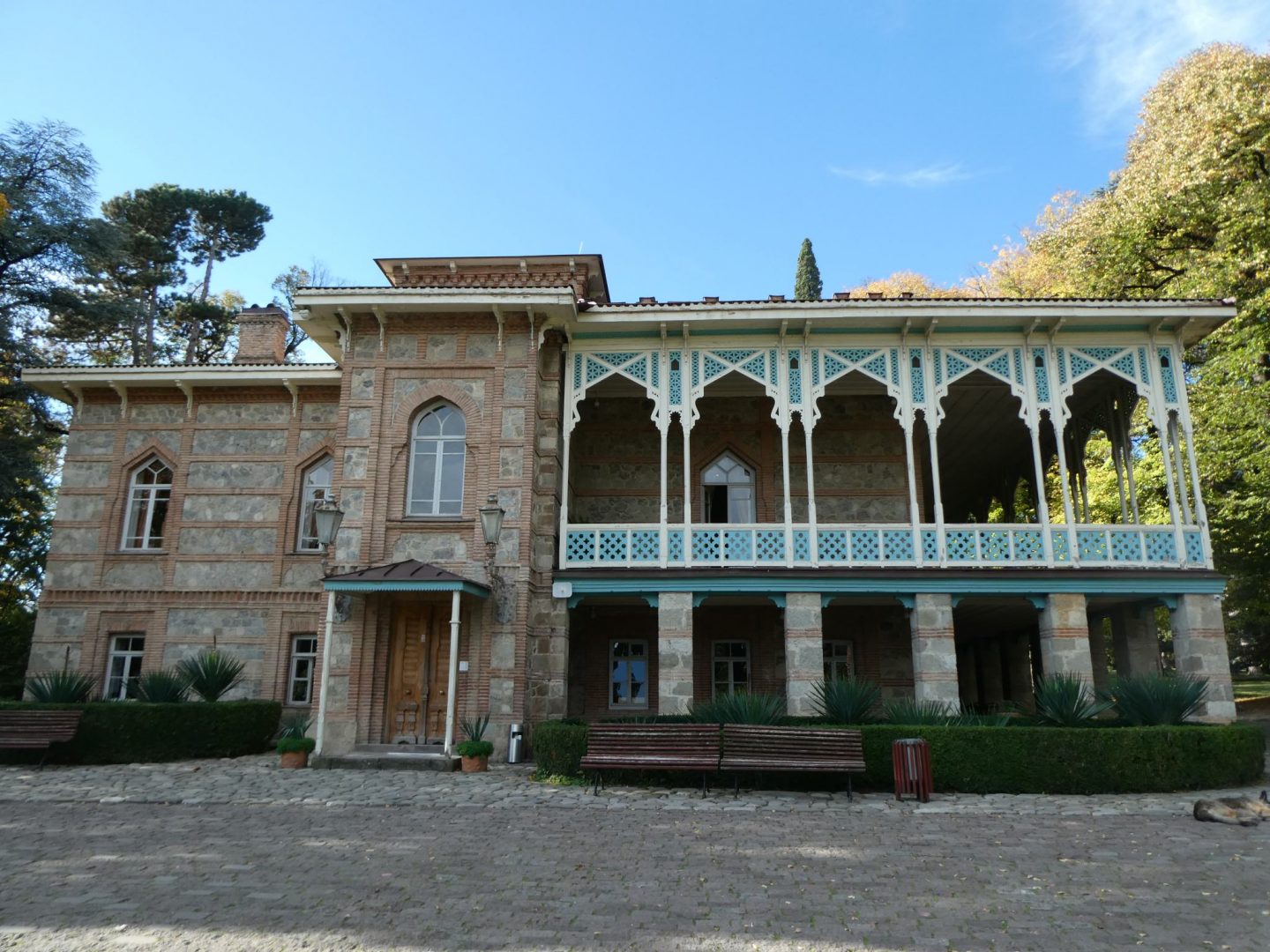 Next we visited Gremi Fortress.  Before Telavi became capital of the Kingdom of Kakheti, that honour rested with Gremi.  In the 15th century, it was a huge trading city sprawling over 40 hectares of markets, caravanserais, traditional baths, an astrological observatory and even a zoo.  In 1616, the Safavid Empire sacked the city, enslaved 100,000 Georgians and razed the region to a desert-like state.  Now all that remains is a part of the former citadel walls and the Church of the Archangels.

The Church has been under a renovation project for years and it looks like the external job is almost complete. 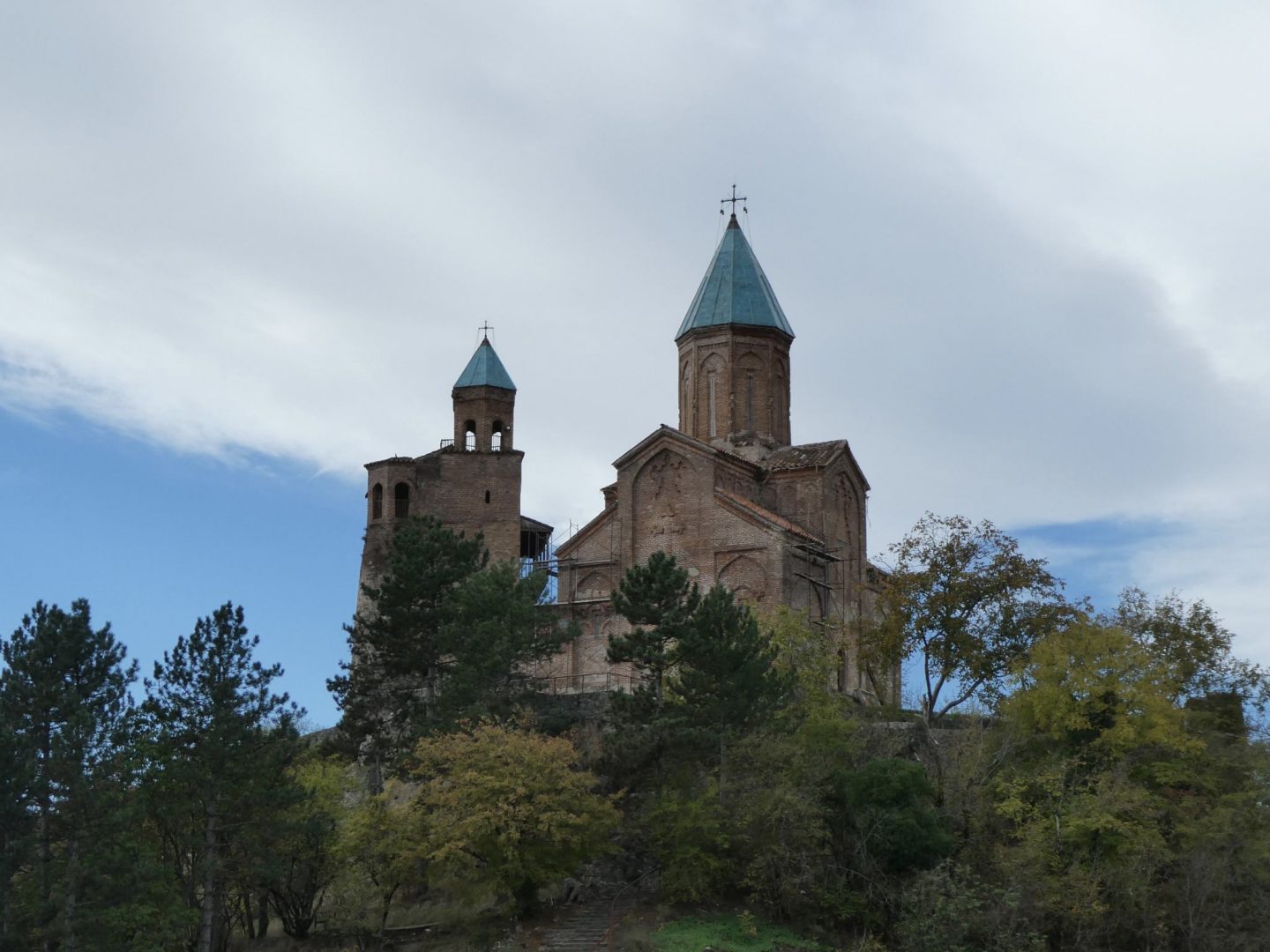 There’s some elegant frescoes inside which make the hike up the hill worthwhile. 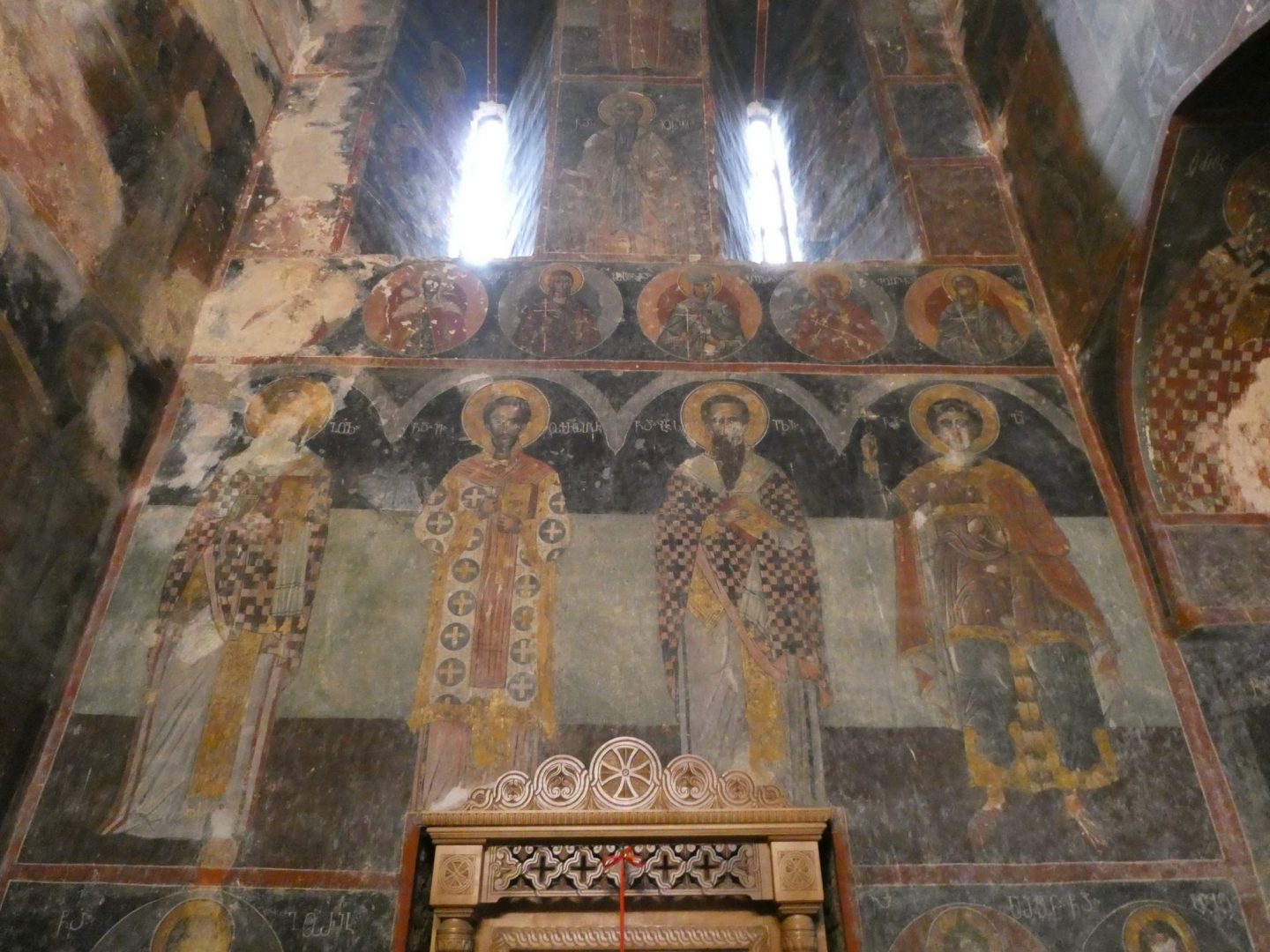 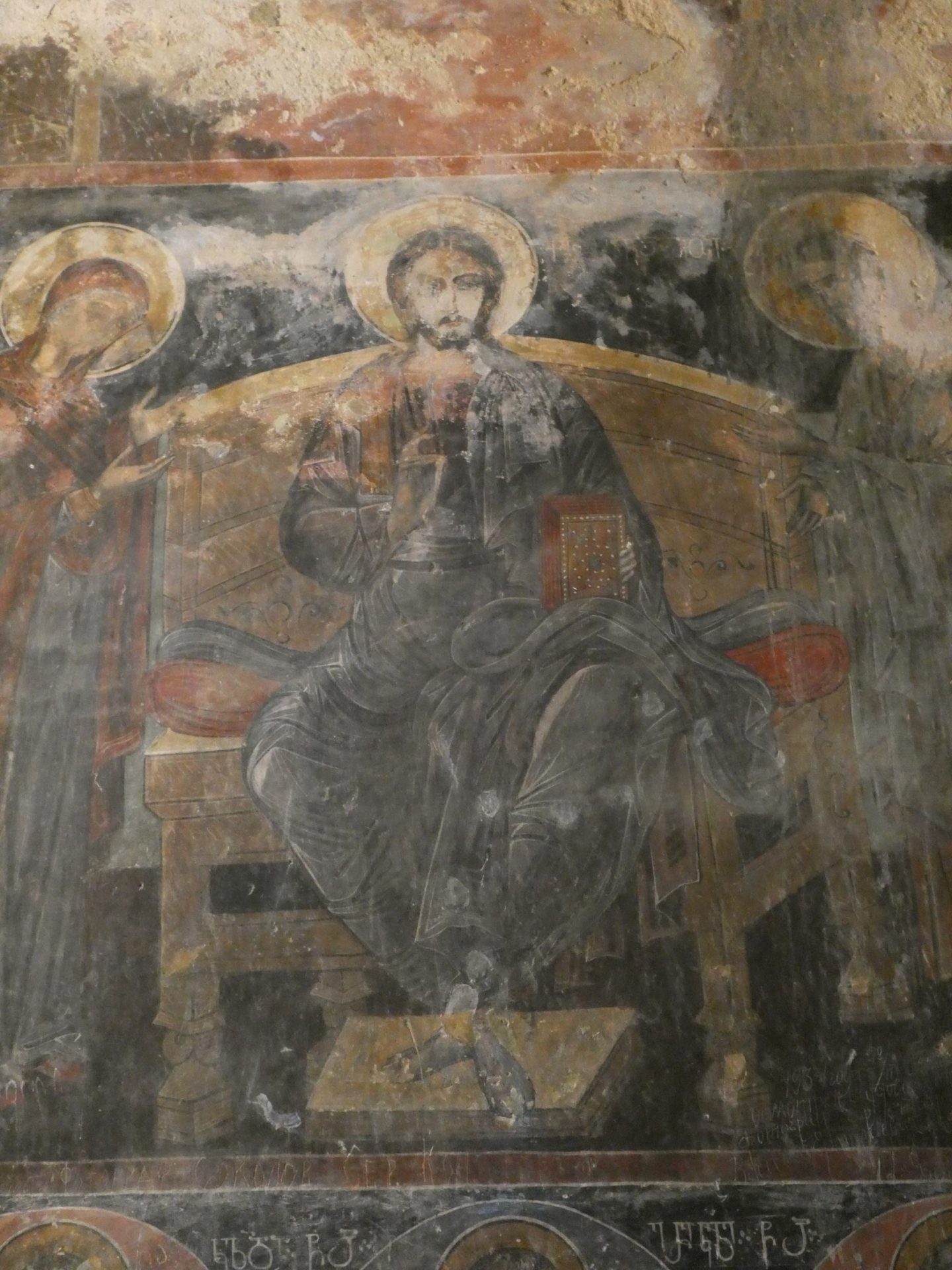 Then we headed to Nekresi Monastery.  Founded in the 6th century, it is still a working monastery.  It was closed after Tsarist Russia took over in 1811 but was reopened in 2000 with about a dozen monks currently in residence. 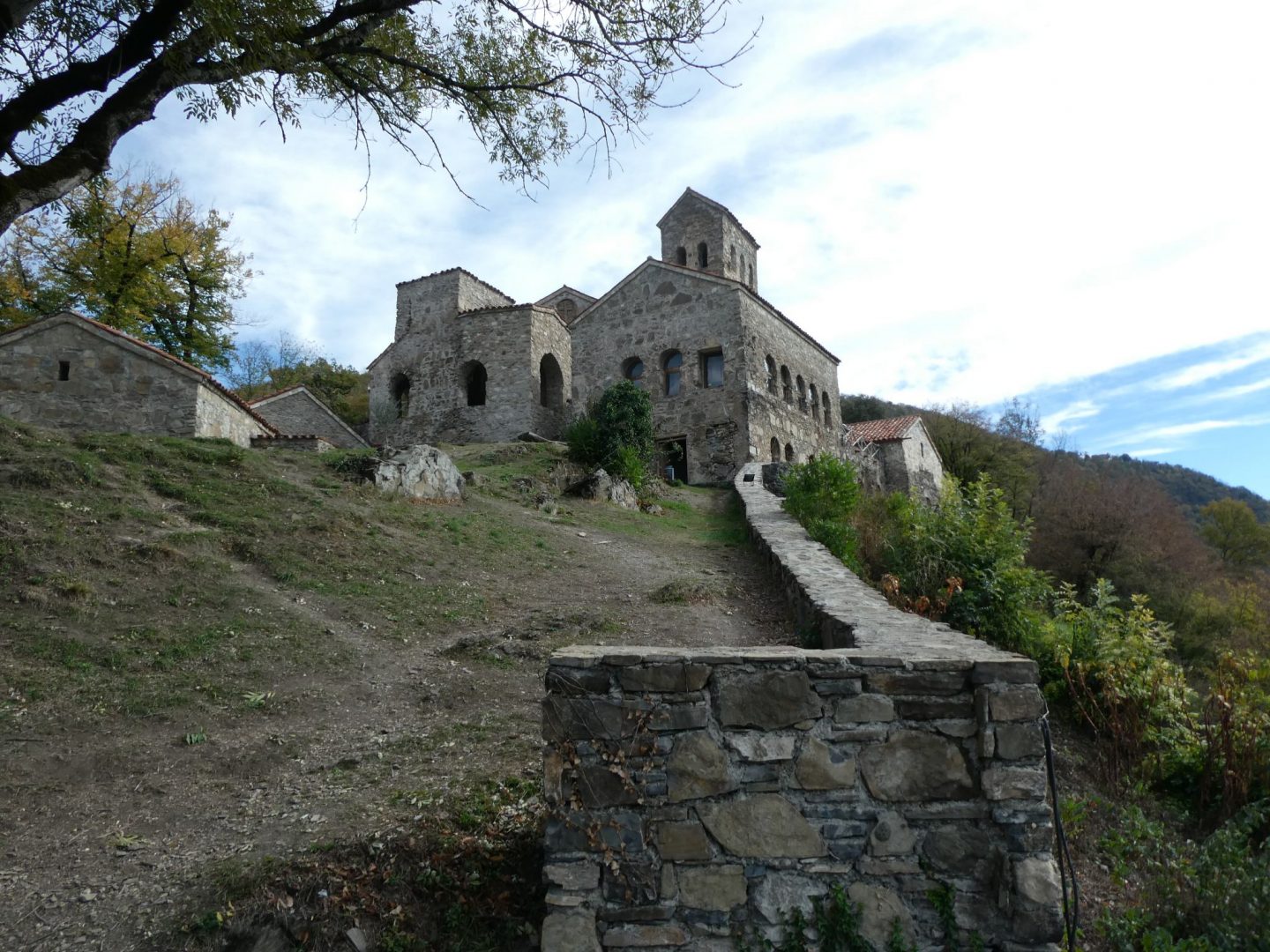 It’s on the top of a wooded hill called Nazvrevi Gora, which means ‘a hill of former vineyards’.  The monks obviously embraced the tradition.  They even had their own qveri operation. 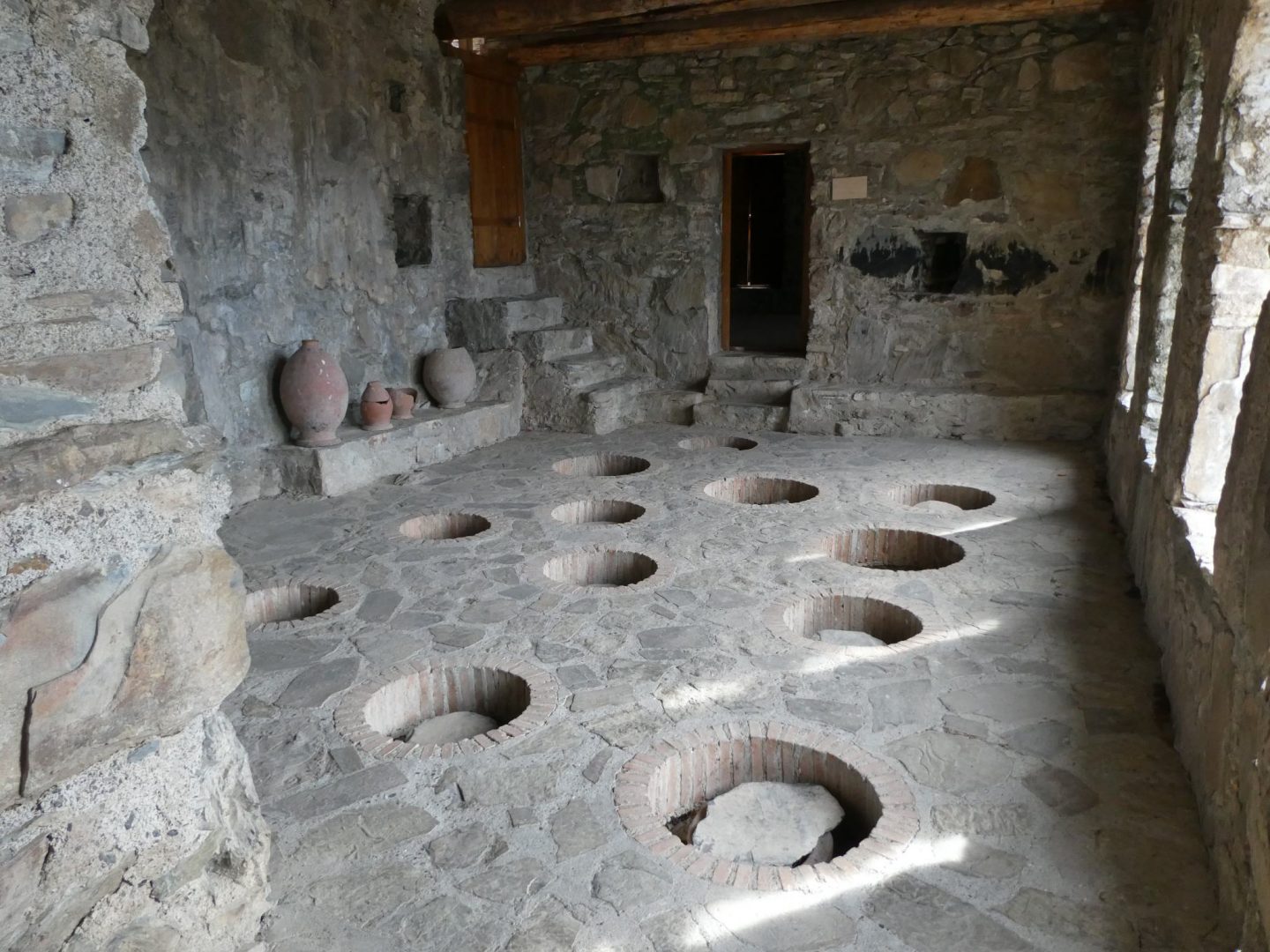 Not far away, Winery Khareba was established in the 1960s.  In contrast to tiny Rostomaant Marani which has just 25 rows of vines, Khareba has 1,500 hectares under production.  It produces both European style and qveri wines.  What makes it different from other wineries is that its wines are aged in tunnels dug into the side of a mountain.  7.7km of tunnels maintain year-round constant temperatures suitable for both barrel ageing and fermentation in qveri. 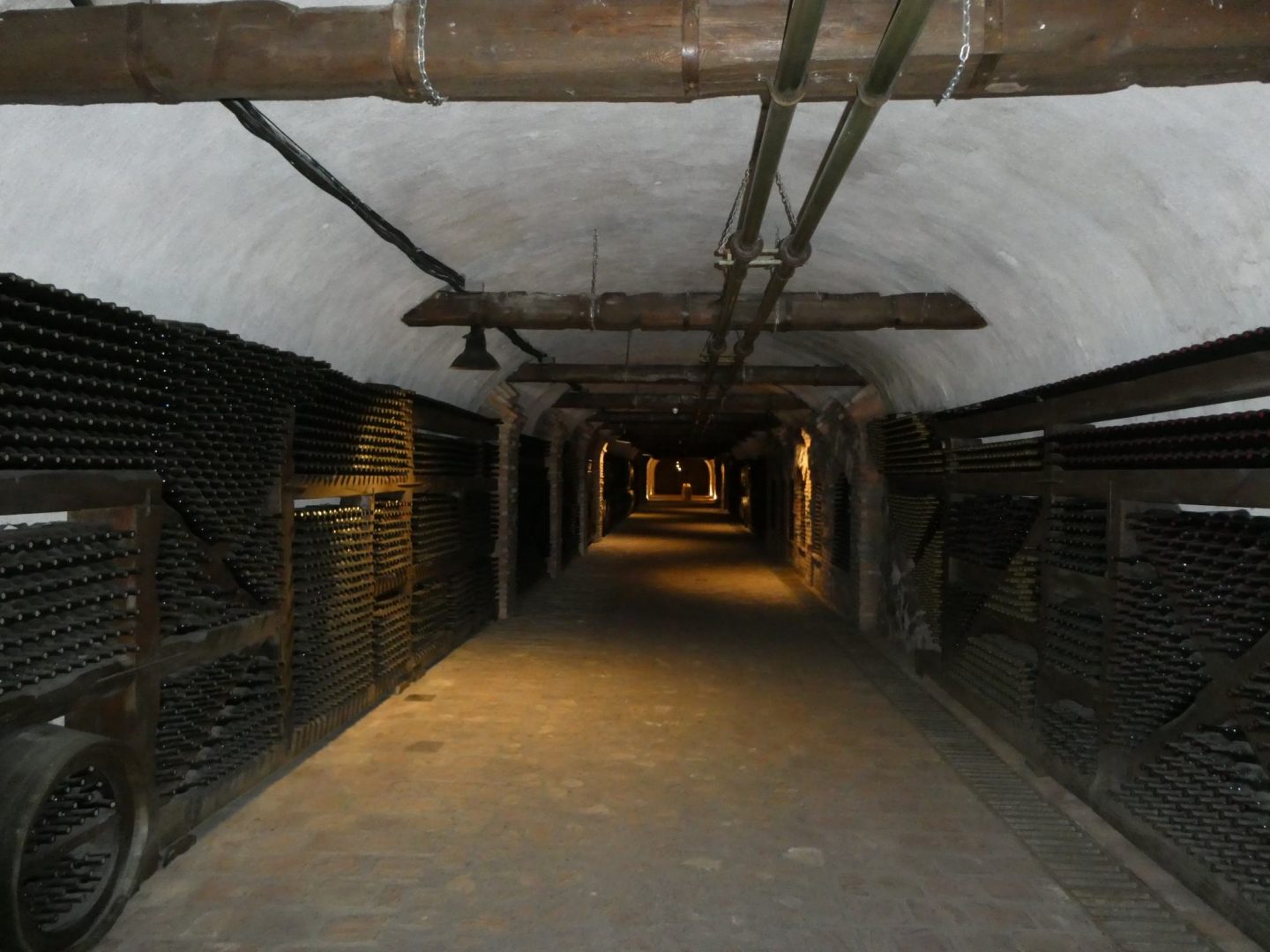 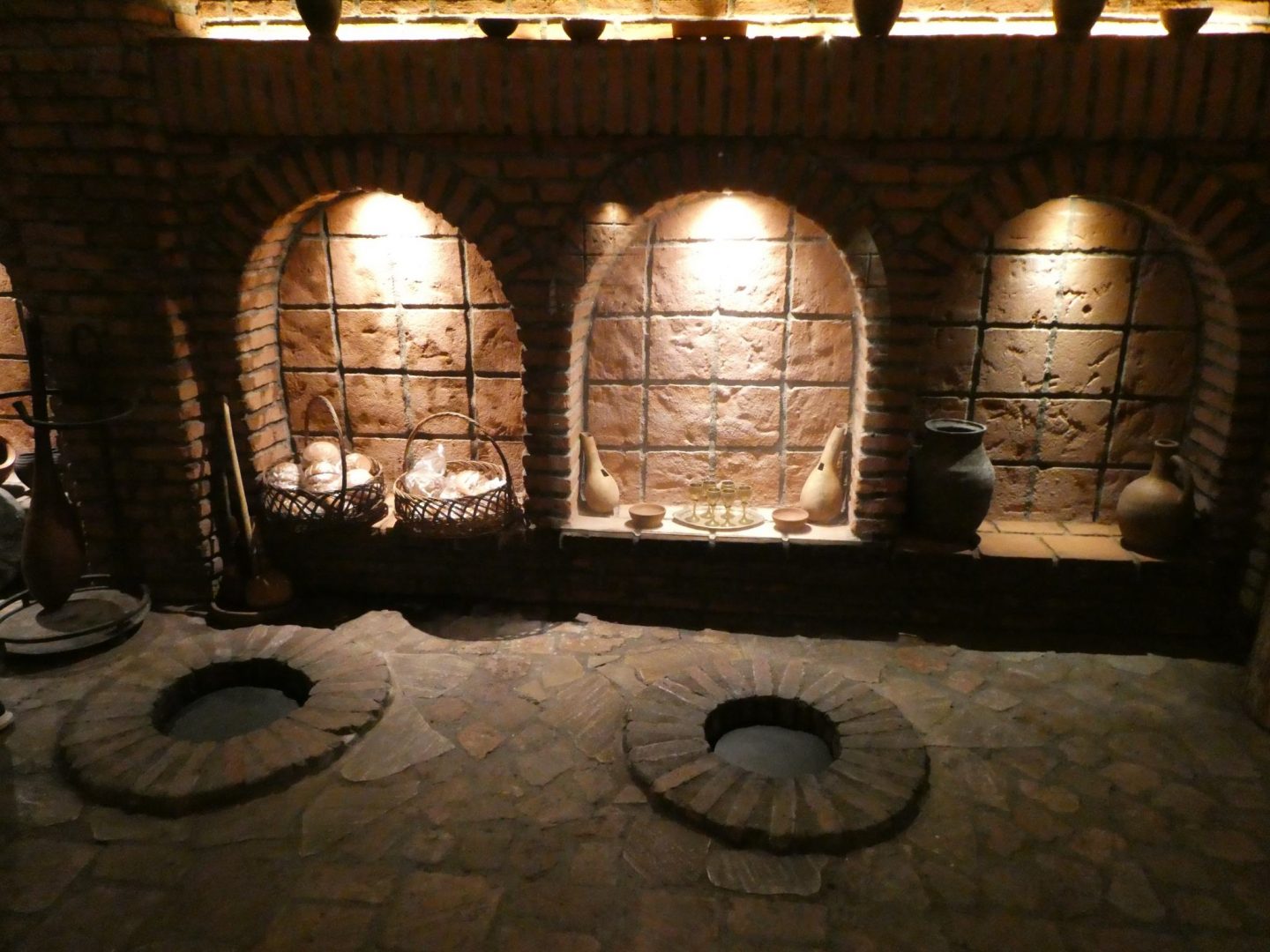 You can do a walking tour of part of the tunnels, or be driven around if you prefer.  A guide explains the qveri production process and conducts a tasting in the tunnel.  It’s very commercial but pleasant.  Don’t forget a coat.  It’s a chilly 12 degrees in there! 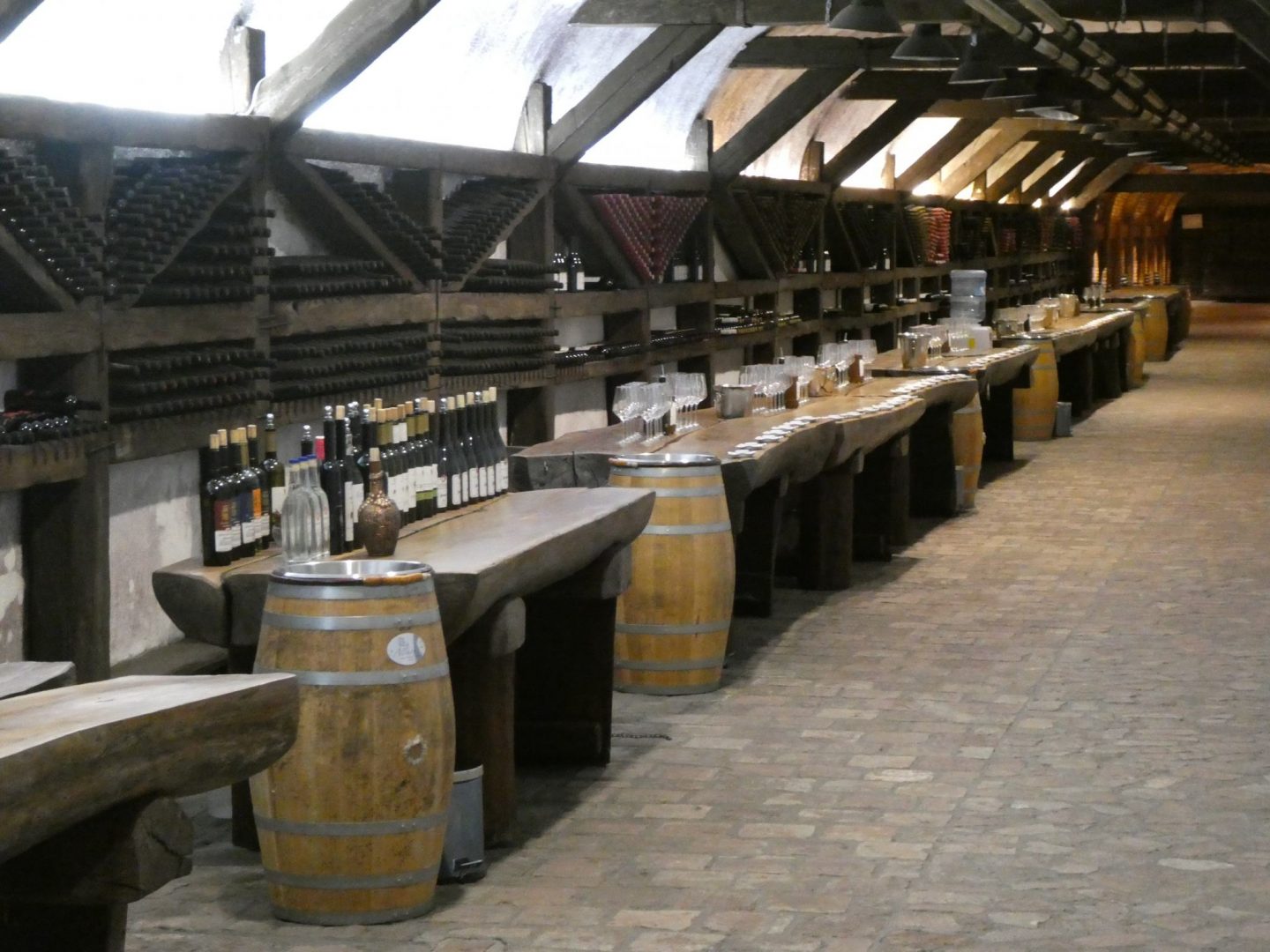 There’s lots of wineries in the valley which are open to the public.  We chose strategically – Rostomaant for a family-run micro-winery, Khareba for a big production professional outfit and lastly Shumi because it’s a relatively small production winery with a good reputation for its wines, a lovely garden to sit in and some good food options. 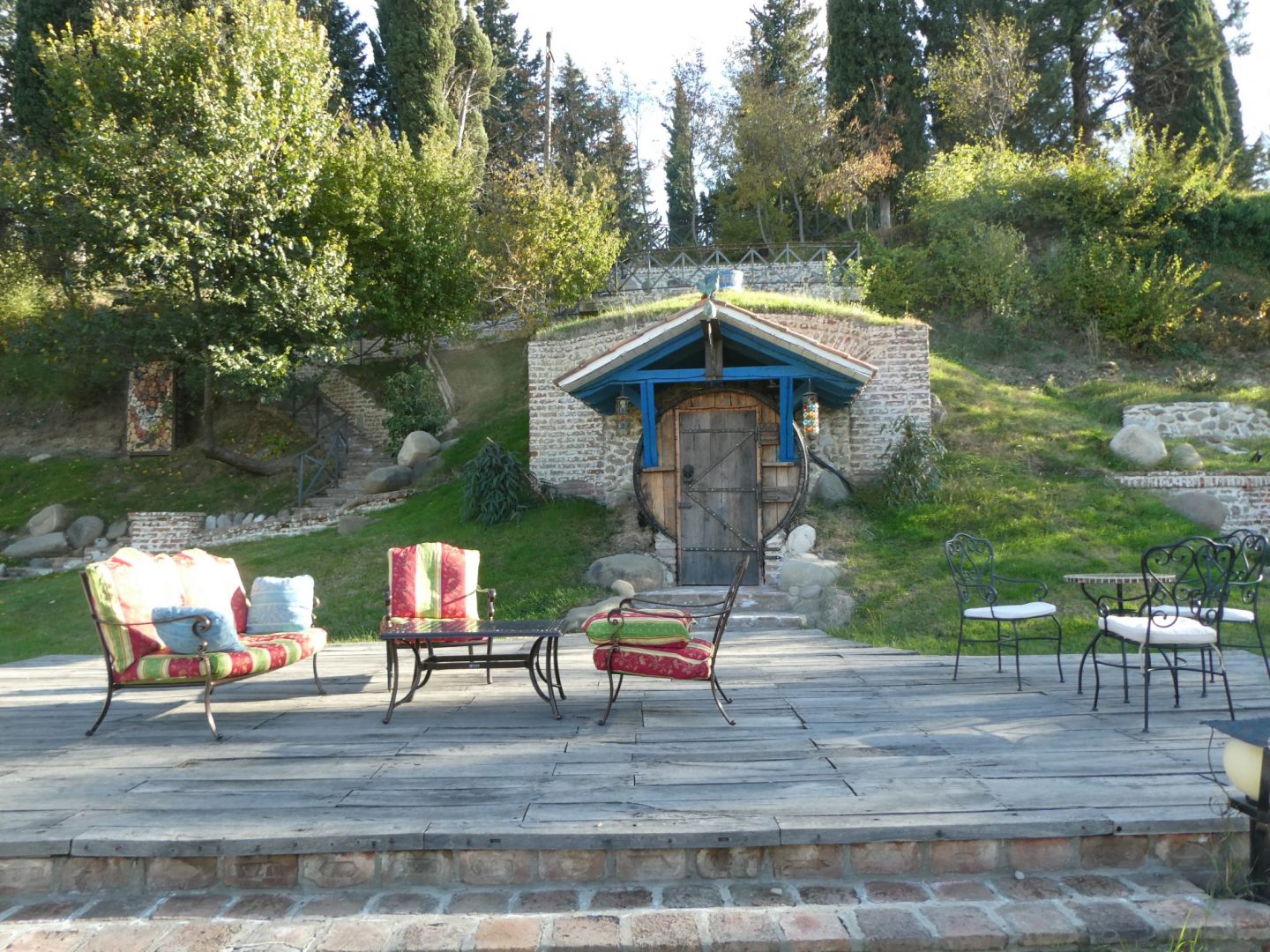 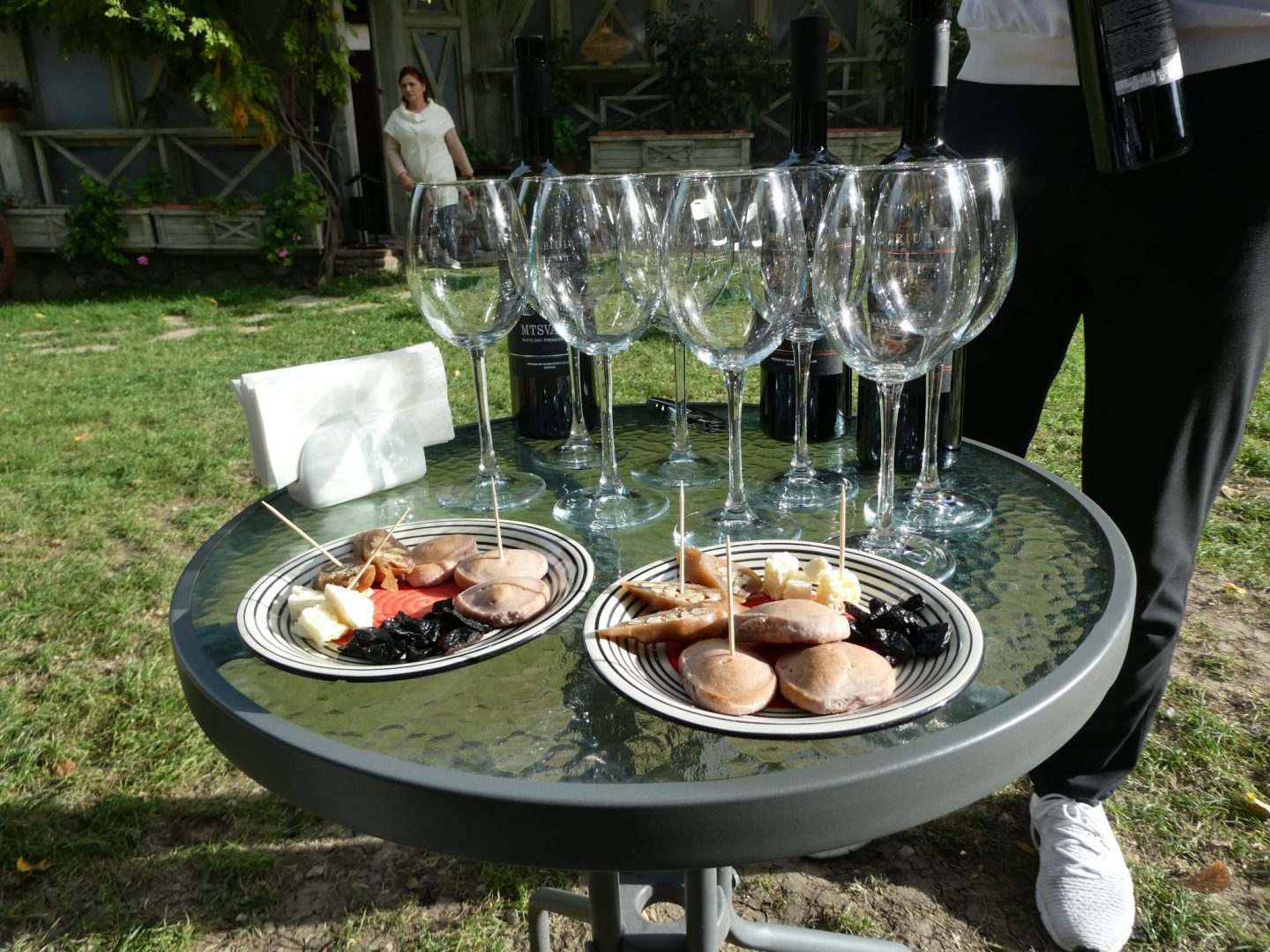 What better way to finish a visit to a wine region than sitting in a vineyard sipping a few good wines in the late afternoon sun.