From Telavi we literally crossed the country from east to west, to reach the lovely town of Kutaisi.  We couldn’t pass up the opportunity to visit the deliciously named Gelati Monastery.

Ten kilometres outside Kutaisi, UNESCO has listed this once vast complex as ‘an outstanding example of Golden Age architecture’.  It was founded in 1106 by King David the Builder – more on him later – as a centre for science, education and culture.  It attracted eminent intellectuals to its Academy, amassed wealth from acquiring the surrounding rich agricultural lands and became a sought-after burial place for nobility.  It grew to become one of the largest medieval Orthodox monasteries, with scholars describing it as a ‘second Jerusalem’ or ‘new Athens’.

Unlike so many ancient places which have been destroyed and rebuilt at least once over the centuries, UNESCO notes that ‘no important original features of the monastery from the 12th and 13th centuries have been lost’.

The communists evicted the monks in 1922, but it’s hard to keep monks from their holy places.  A new generation has been in situ since the monastery was re-consecrated in 1988. 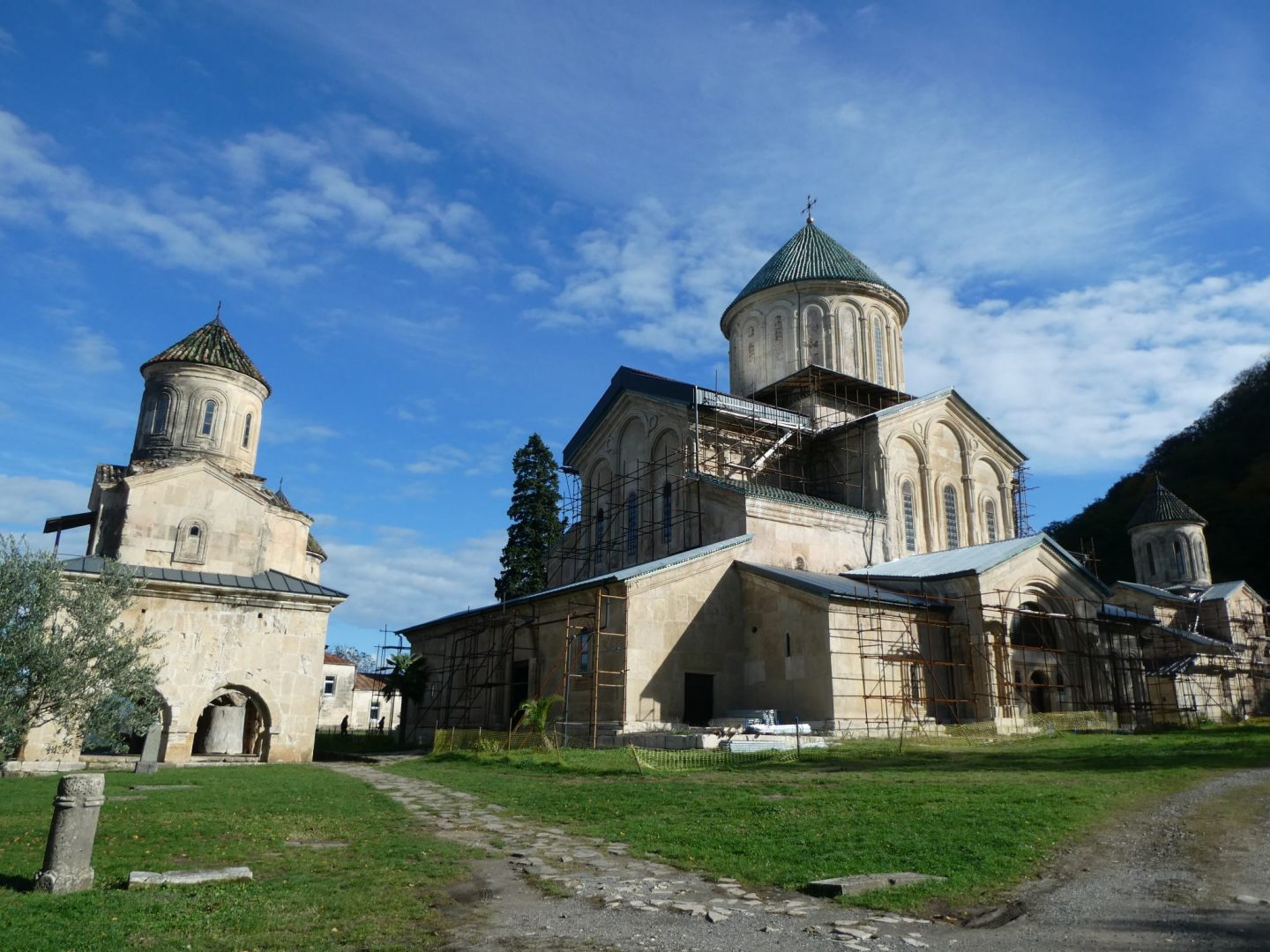 Inside, the churches are decorated with intricate mosaics and some of the most colourful frescoes in Georgia.  UNESCO has assessed the complex to be ‘the only medieval structure in Eastern Asia Minor and the Caucasus that still has well-preserved mosaic decoration, comparable with the best Byzantine mosaics’.

A restoration program is in progress under UNESCO’s supervision and what is emerging is very fine indeed. 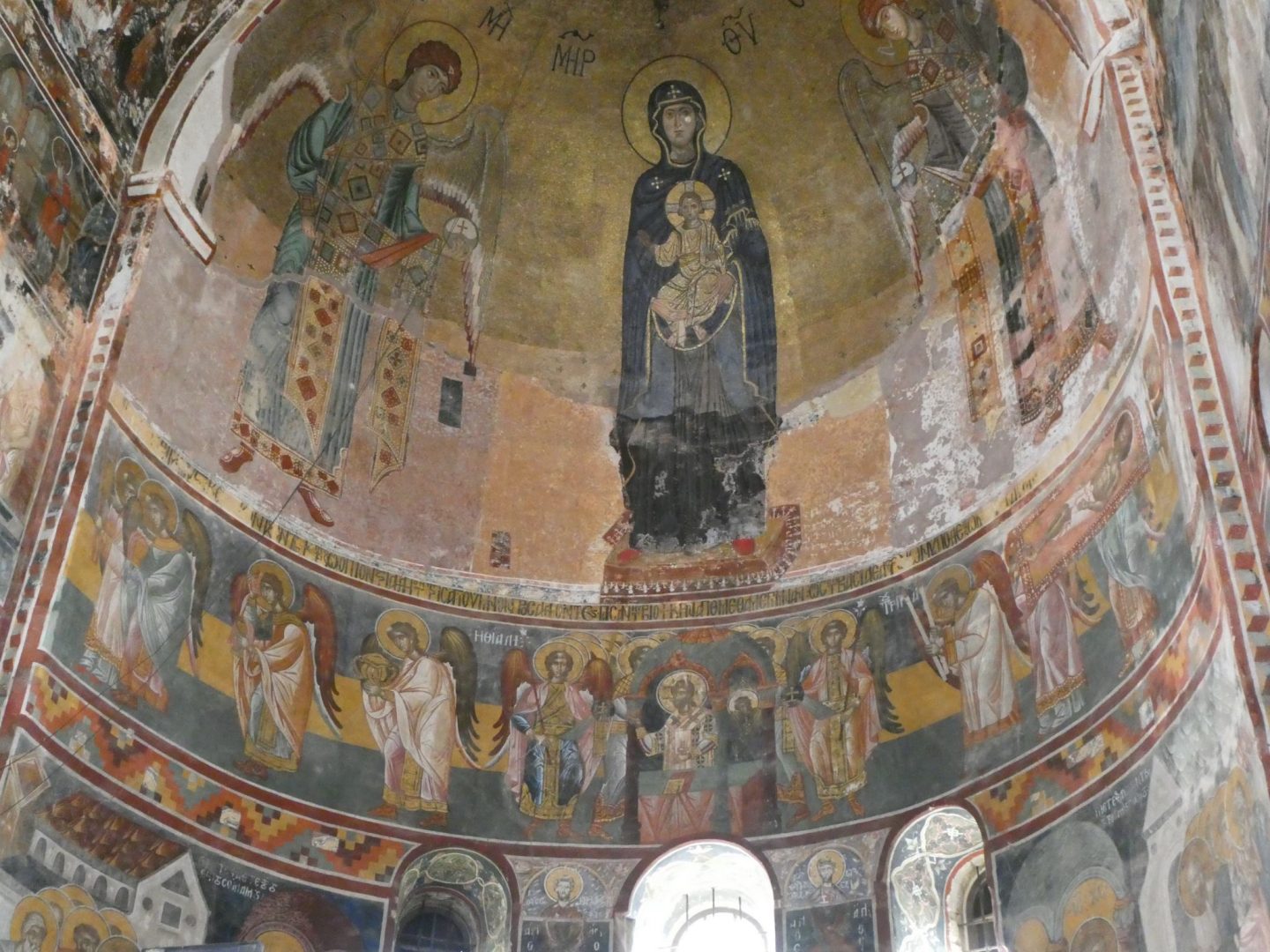 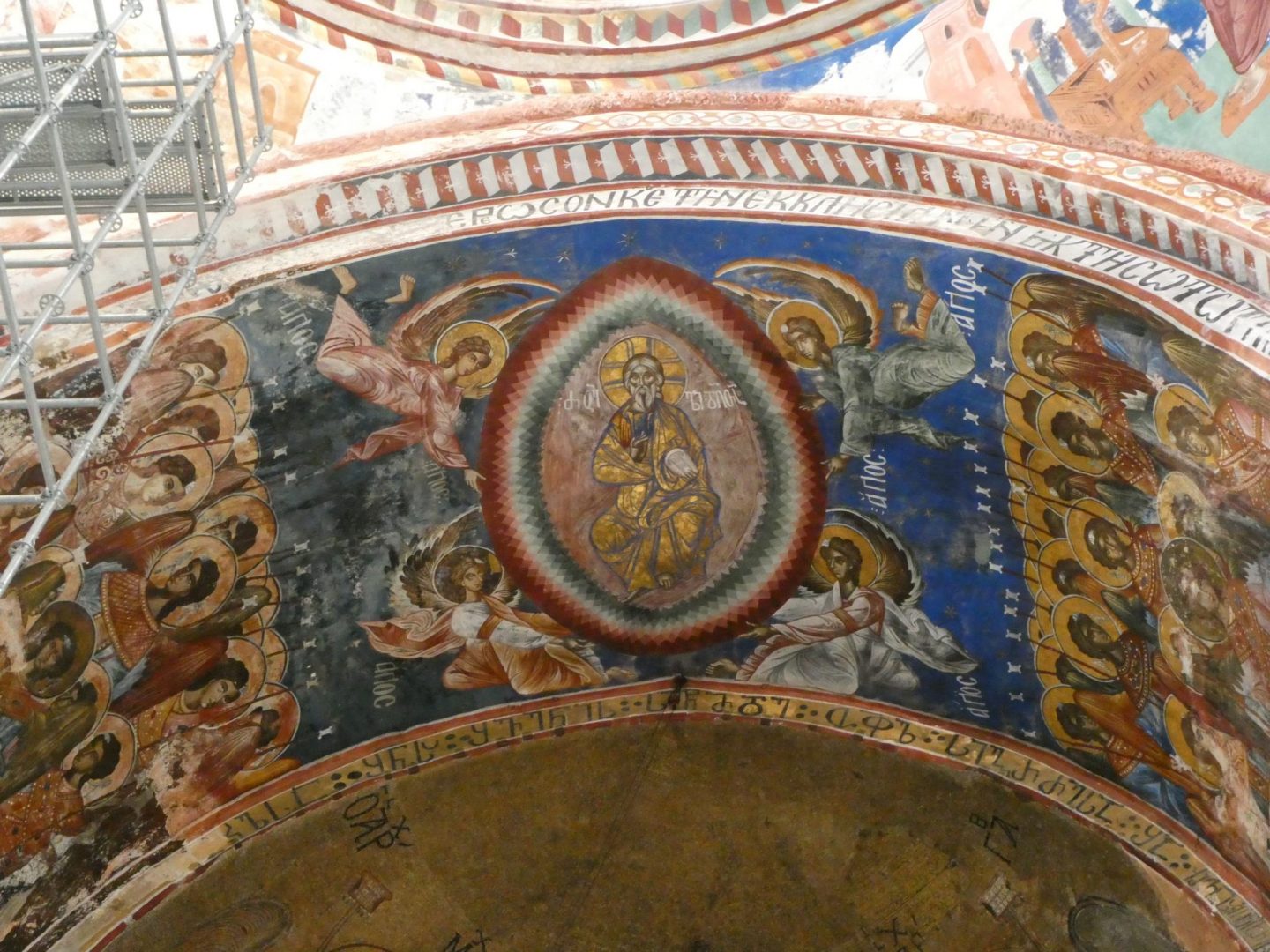 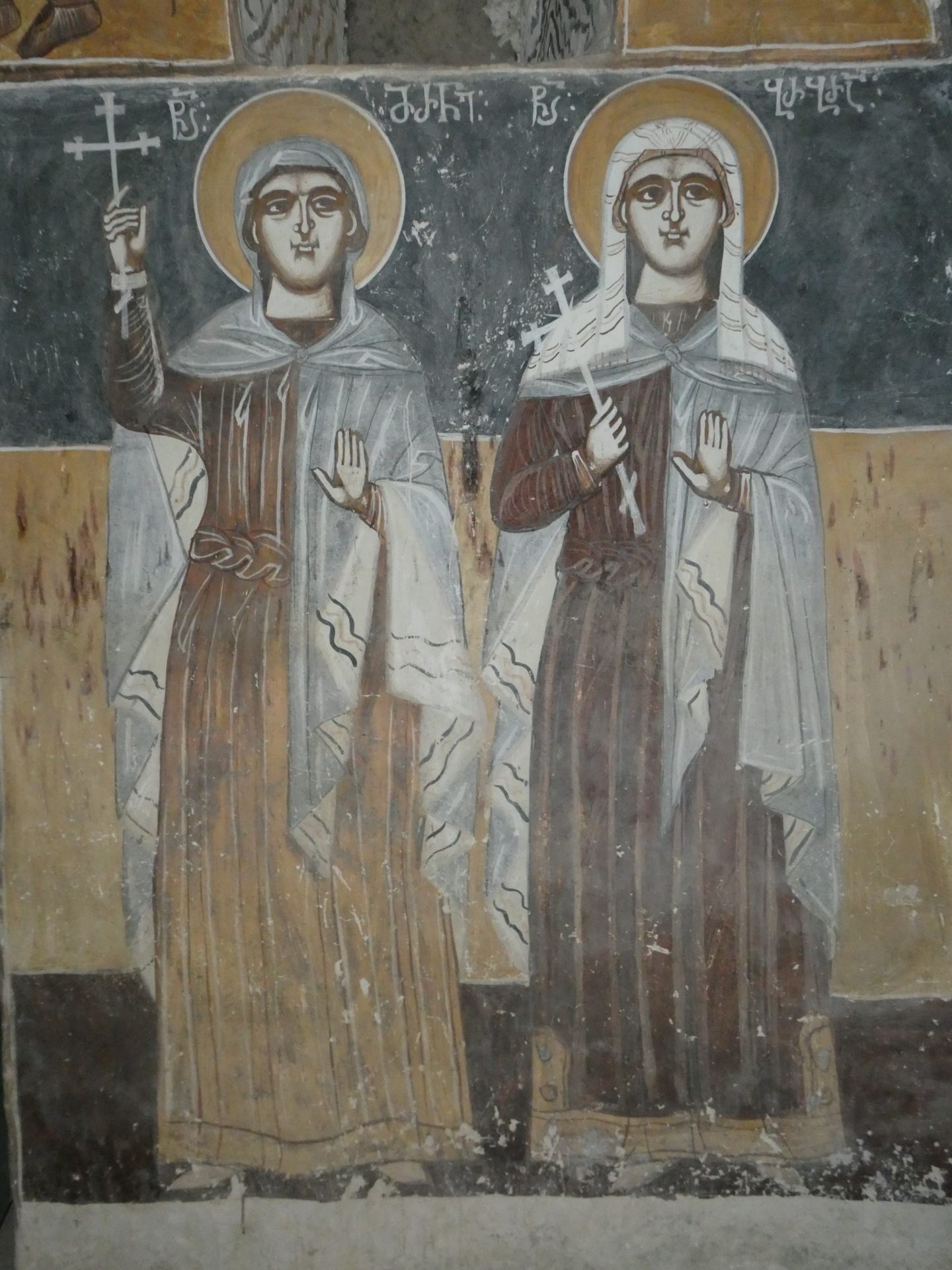 Despite its name, there are no frescoes of Our Lord clutching an Italian ice confectionery.  What a pity.

No less than thirteen Georgian kings and one queen are buried here, most beneath simple slabs with nothing in English to identify them to we foreigners.  Not so, the tomb of the monastery’s founder King David IV, aka David the Builder.  No relation to Bob.

David the Builder is generally considered Georgia’s greatest and most successful royal leader.  He drove the Turks out of the country in 1121.  His reforms of the army and civic administration enabled him to unite the country and bring most of the Caucasus under Georgia’s control.  At least for a while.

He wanted to be buried in a simple grave in the gateway of the monastery so that all who entered would step on his grave.  Apparently he thought this demonstrated his humility.  Paradoxically, devotees these days deliberately step around it out of respect and there’s even a rope to remind the rest of us to do the same. 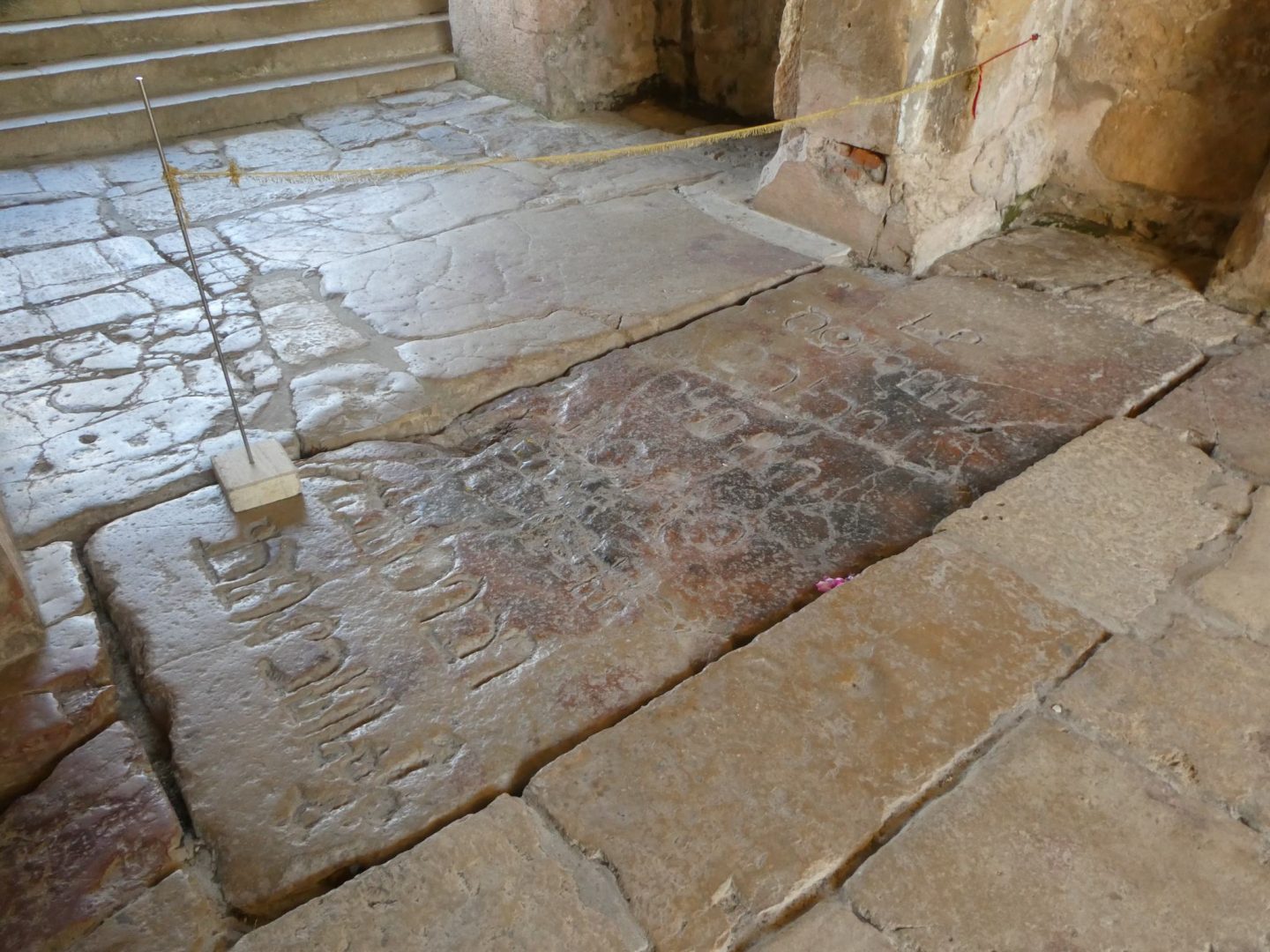 In contrast to Gelati, the Holy Annunciation Temple in town is one of the very few Baroque style churches in Georgia.  It’s also a little bit contentious.  According to one version, a local prince permitted Catholic missionaries to shelter in a wooden building previously on the site.  They stayed and built the stone church which stands there today.  On another version, the church was built as an Orthodox Church and the Catholics wrongfully usurped it.

Either way, the Catholic Church lost it when Catholicism was banished from the Russian Empire in the late 1800s.  It was then used as an Orthodox Church until communism halted its use as a church of any kind.

After the fall of communism, both churches petitioned the newly independent Georgian government to get it back.  It was awarded to the Orthodox Church but there’s been litigation contesting the decision.  The issue is far from settled. 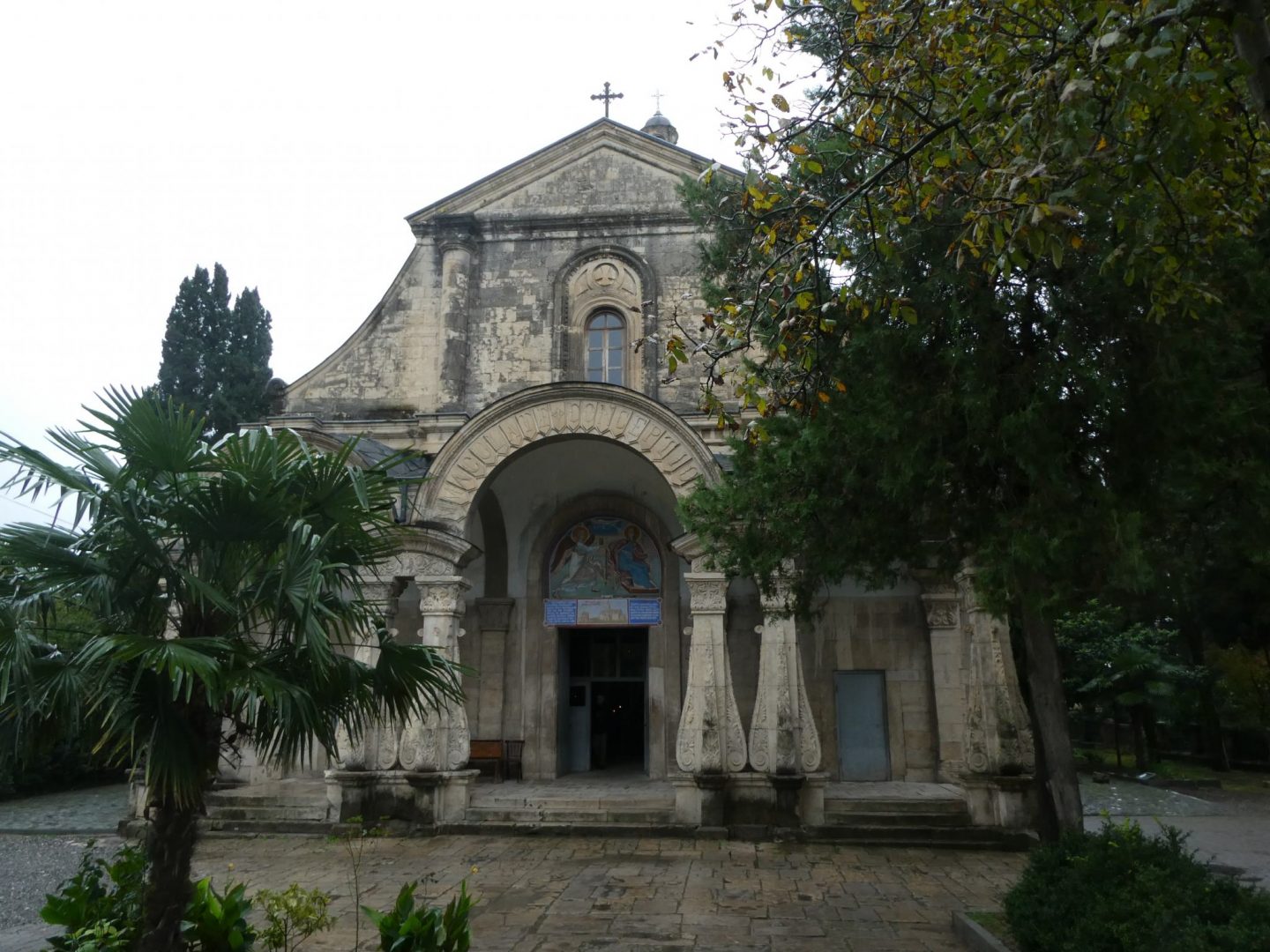 For those who think eating those Italian ice treats is something approaching a religious experience, across the courtyard from the church is surely the place to study. 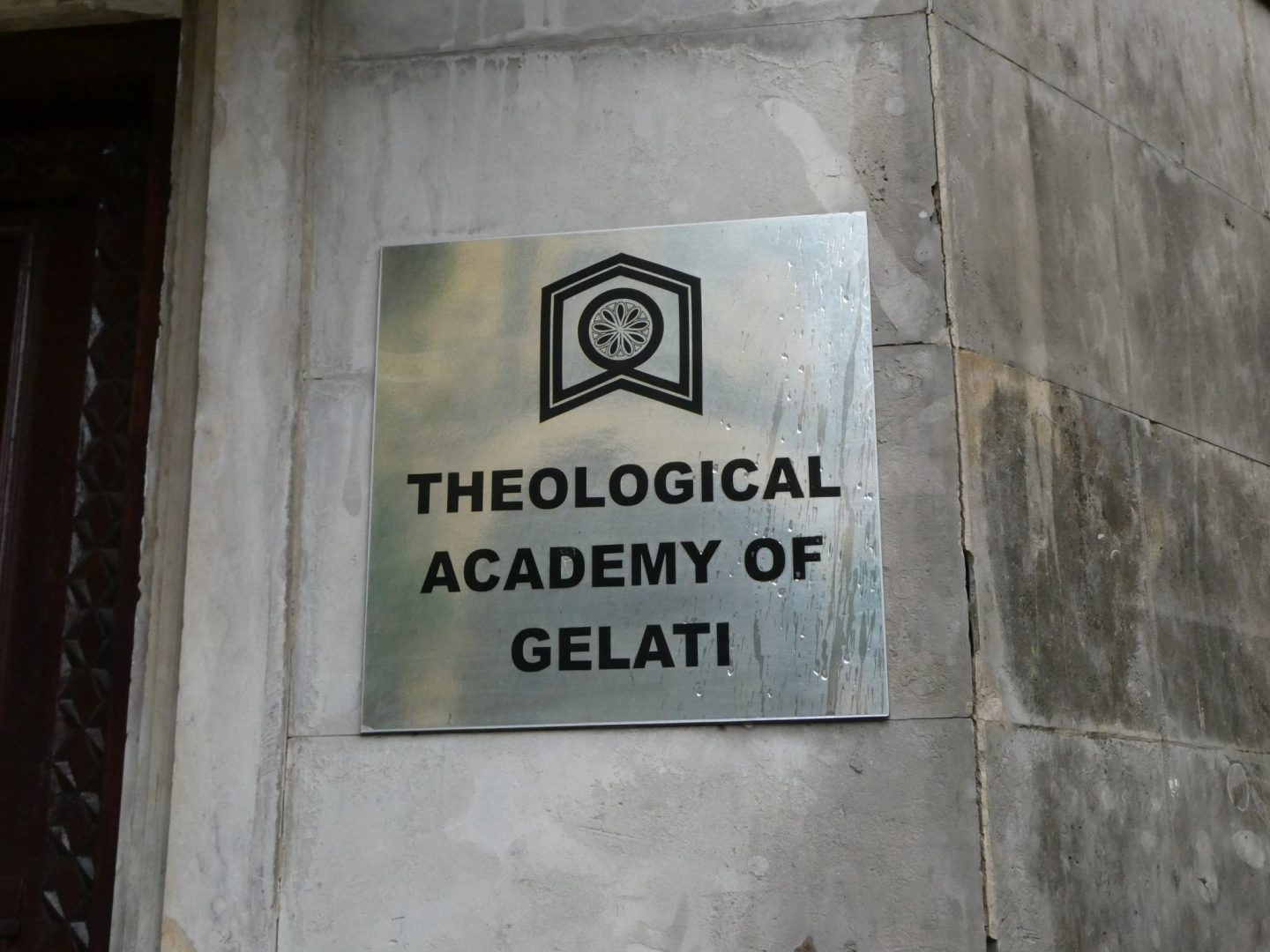 The city ‘twin’ to rural Gelati Monastery is Bagrati Monastery on a hill above the river in central Kutaisi.  It was built about one hundred years earlier but didn’t fare so well.  The central dome and ceiling collapsed in a cannon attack by invading Turks in 1692.  The church was abandoned and was reduced almost to rubble over the next few centuries.  A restoration project which started in the 1950s and continued until 2012 has seen it rebuilt with a mix of original stone and a lot of new materials. 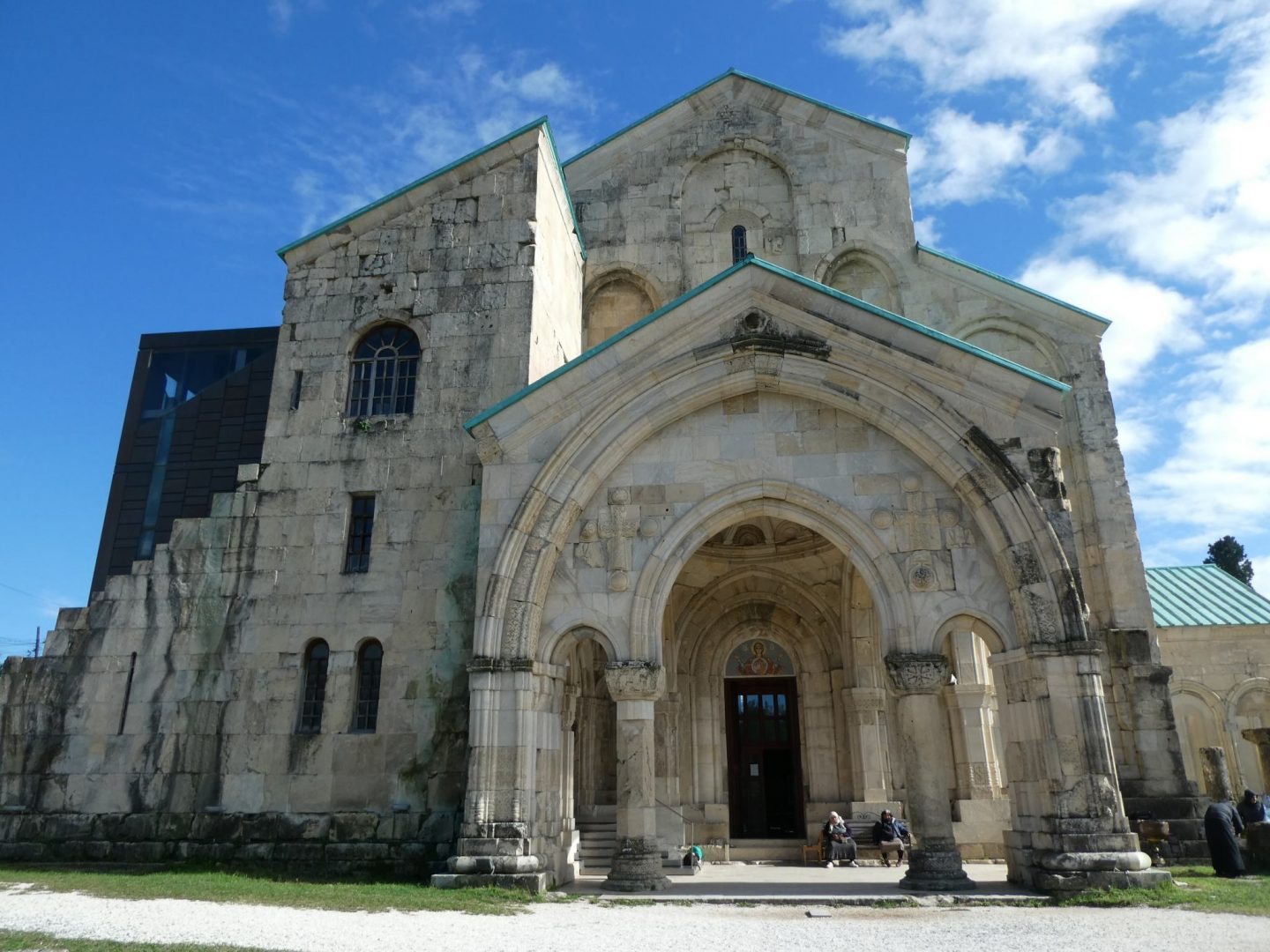 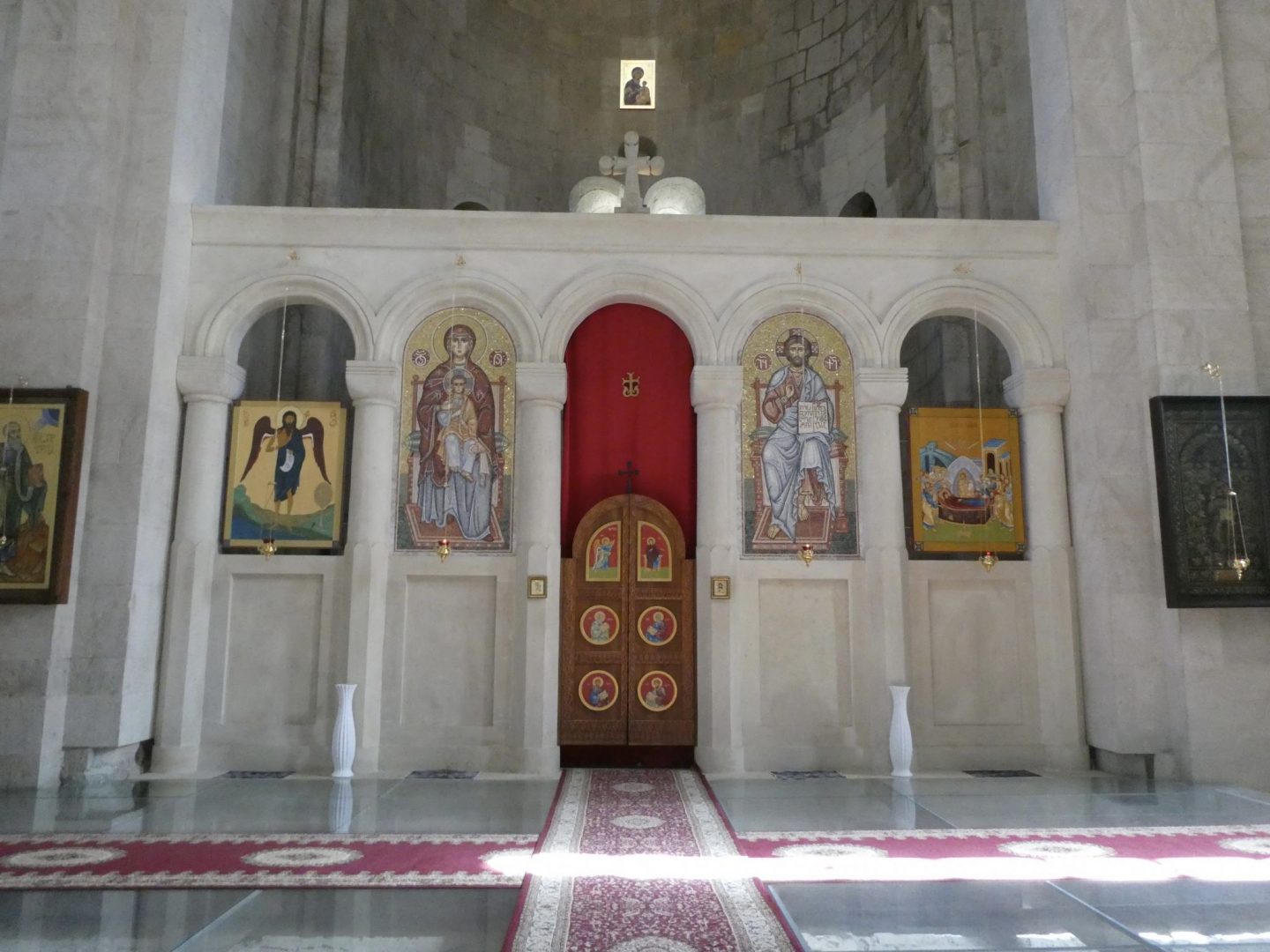 It looks good.  UNESCO wasn’t impressed.  It removed Bagrati from its list of World Heritage Sites in 2017 as it considered the major reconstruction was detrimental to the historic church’s integrity and authenticity.  Despite this, it is an important site to Georgians and still operates as a place of worship.

It raises the interesting philosophical issue.  Should you just put a roof over what has been reduced to little more than a pile of rocks and call it a ‘heritage site’ or should it be reconstructed into something useful to locals, knowing its heritage status will be lost.  Interesting question.

Perhaps there are other ways to balance heritage and creativity.  The Colchis Fountain in the centre of Kutaisi is a case in point.  Archeological excavations at nearby Vani in the mid 20th century yielded an impressive array of gold jewellery and statues.  They have been carted off for study or placed in museums, so Kutaisi built a fountain with larger than life replicas of the beautiful Vani objects.

The horses on the top are a copy of a pair of gold earrings from the site.  The rams and other animals are copies of figurines found in tombs there. 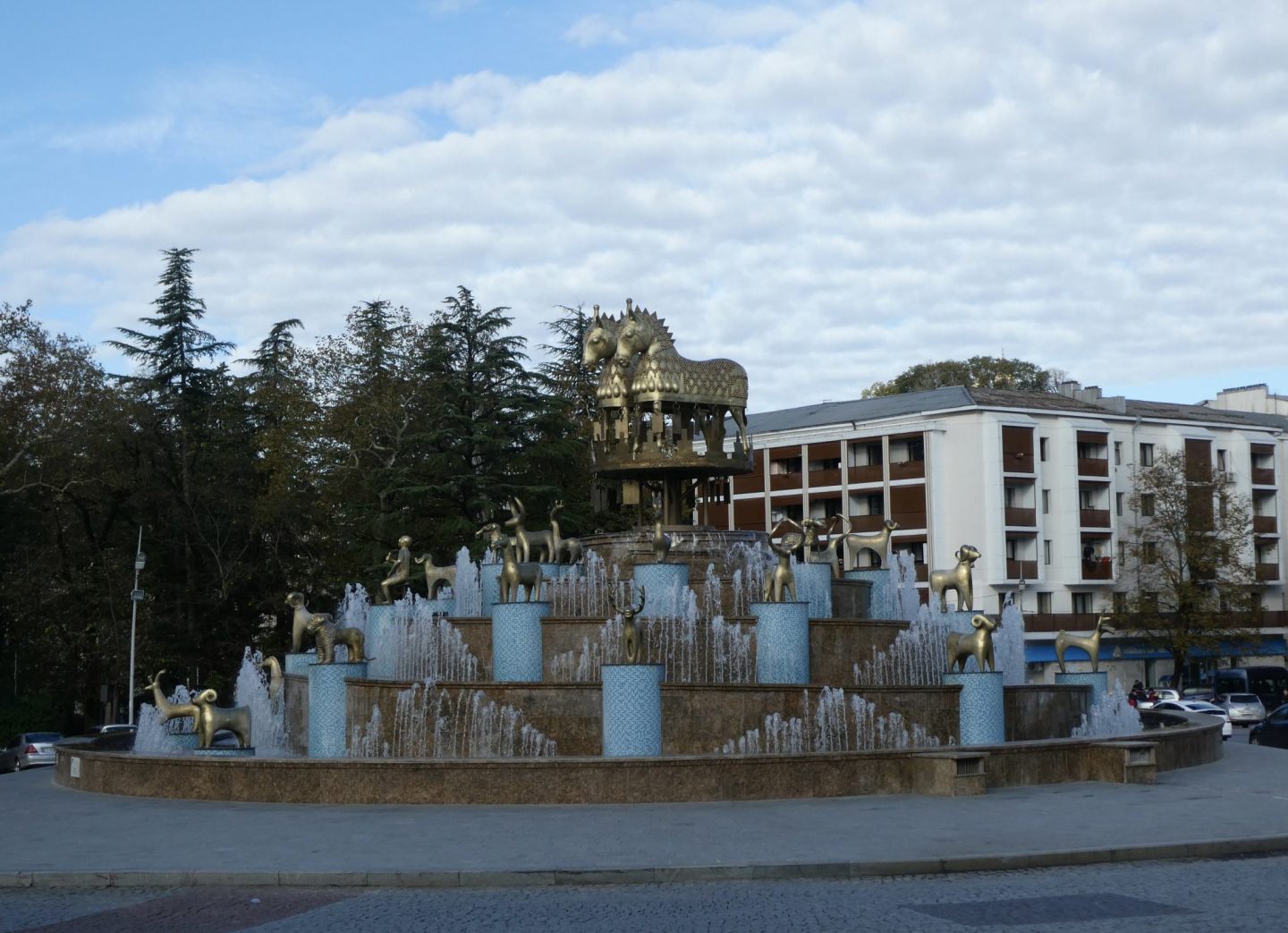 A more contemporary image is the statue of Picasso’s Boy on the White Bridge.  He’s a character from a film by Rezo Gabriadze, the puppeteer who built the leaning clock tower in Tbilisi. 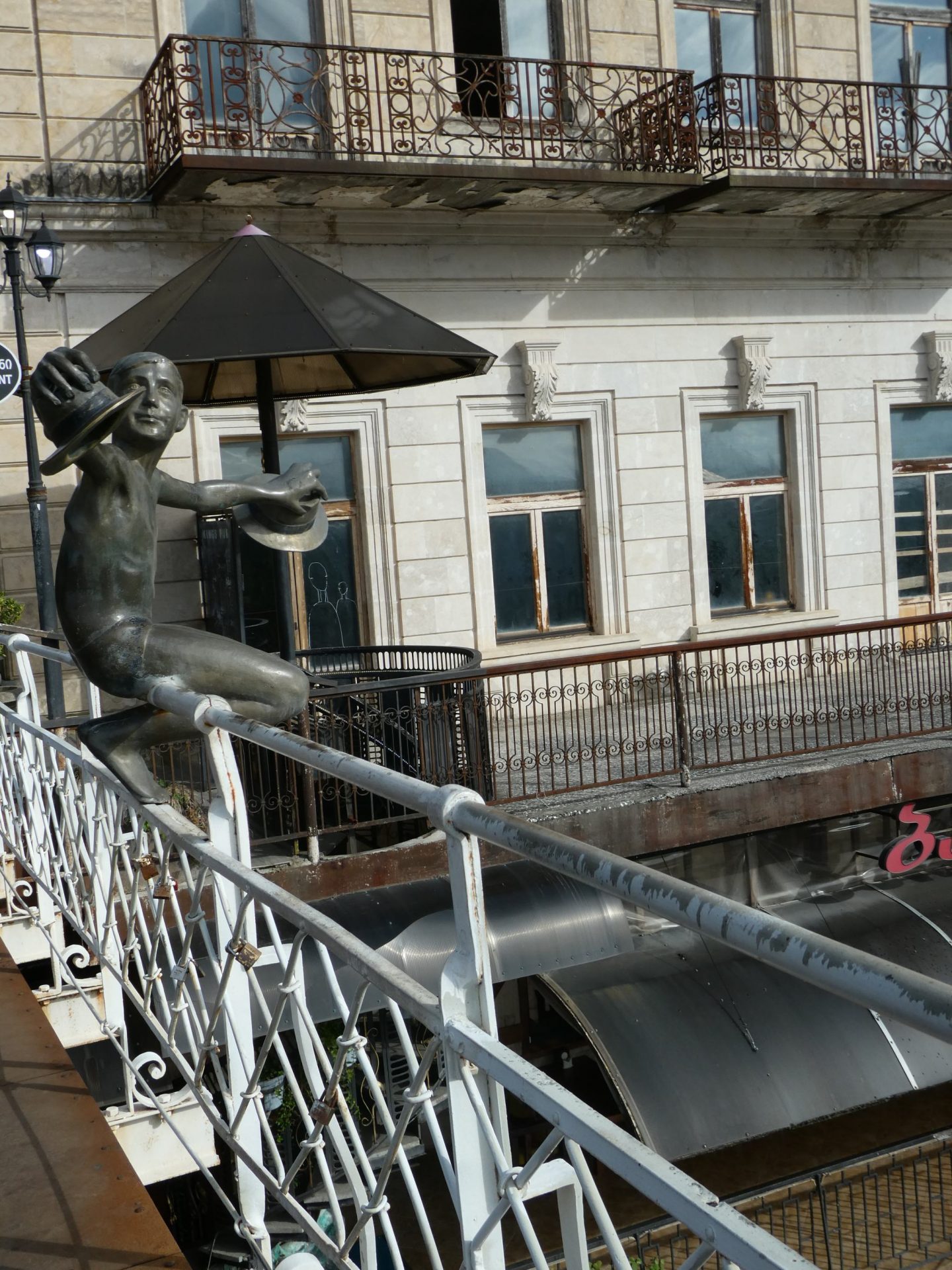 Kutaisi’s bustling market is also worth a look.  Kindle is yet to get a foothold here. 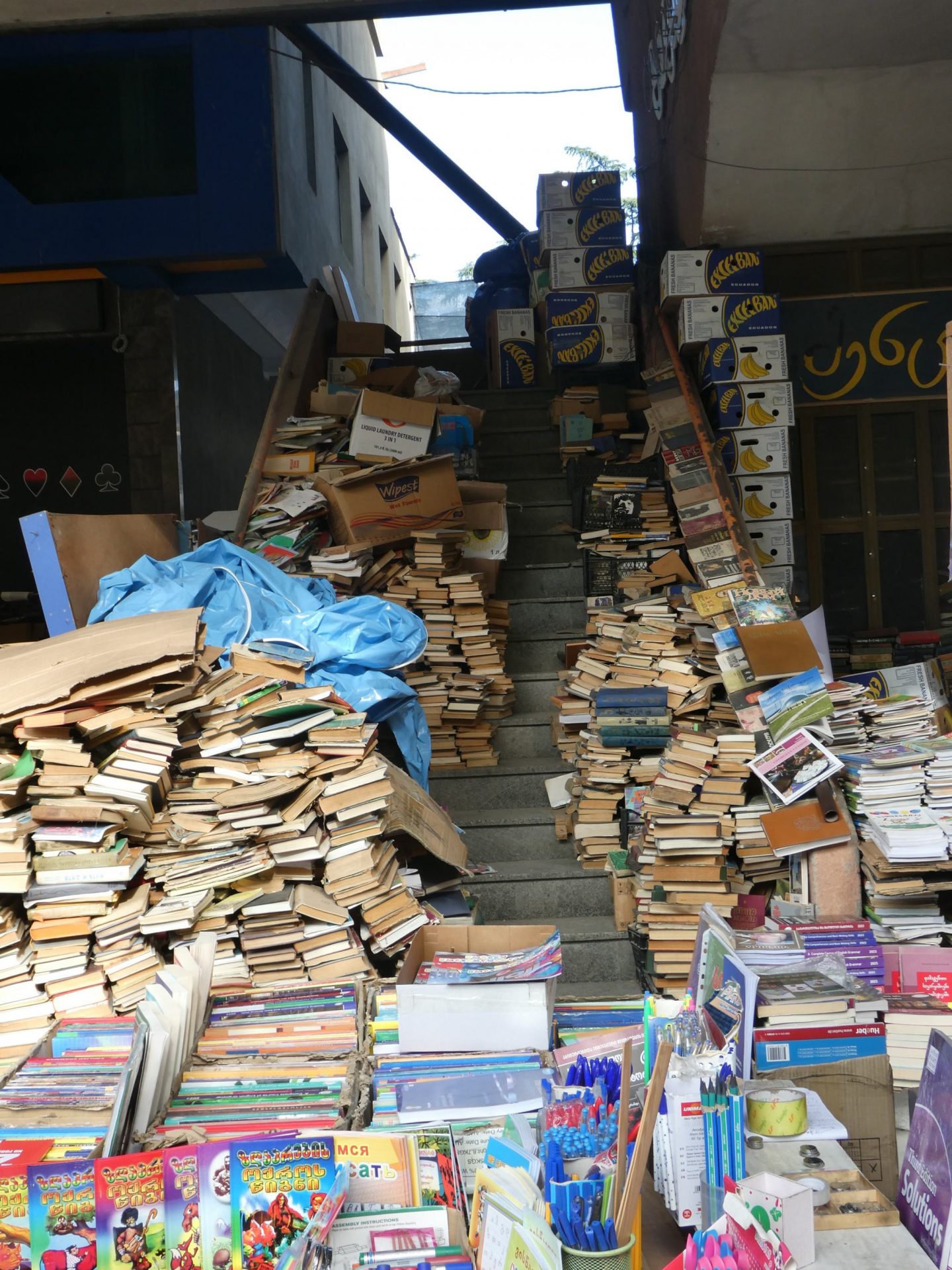 There’s a great selection of pickles. 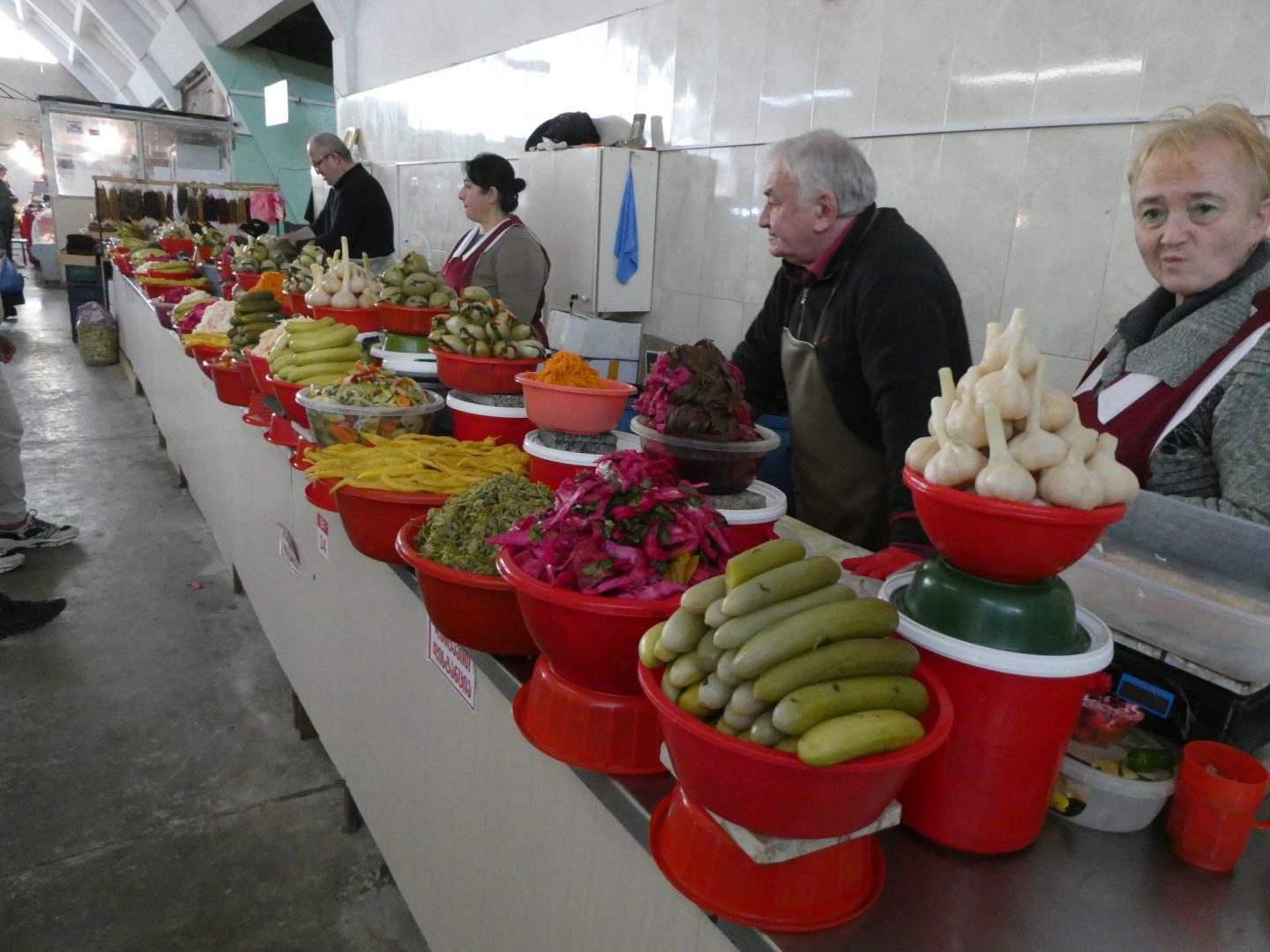 The sweets hanging above this stall are a Georgian favourite called Churchkela.  Nuts are threaded onto a string.  A mix of thickened fruit juice is pressed around the nuts and sets into a rubbery solid.  Often its grape juice, and you can also find them made from pomegranate or apple juice.  We didn’t really go for them, but Georgians munch on them all day long. 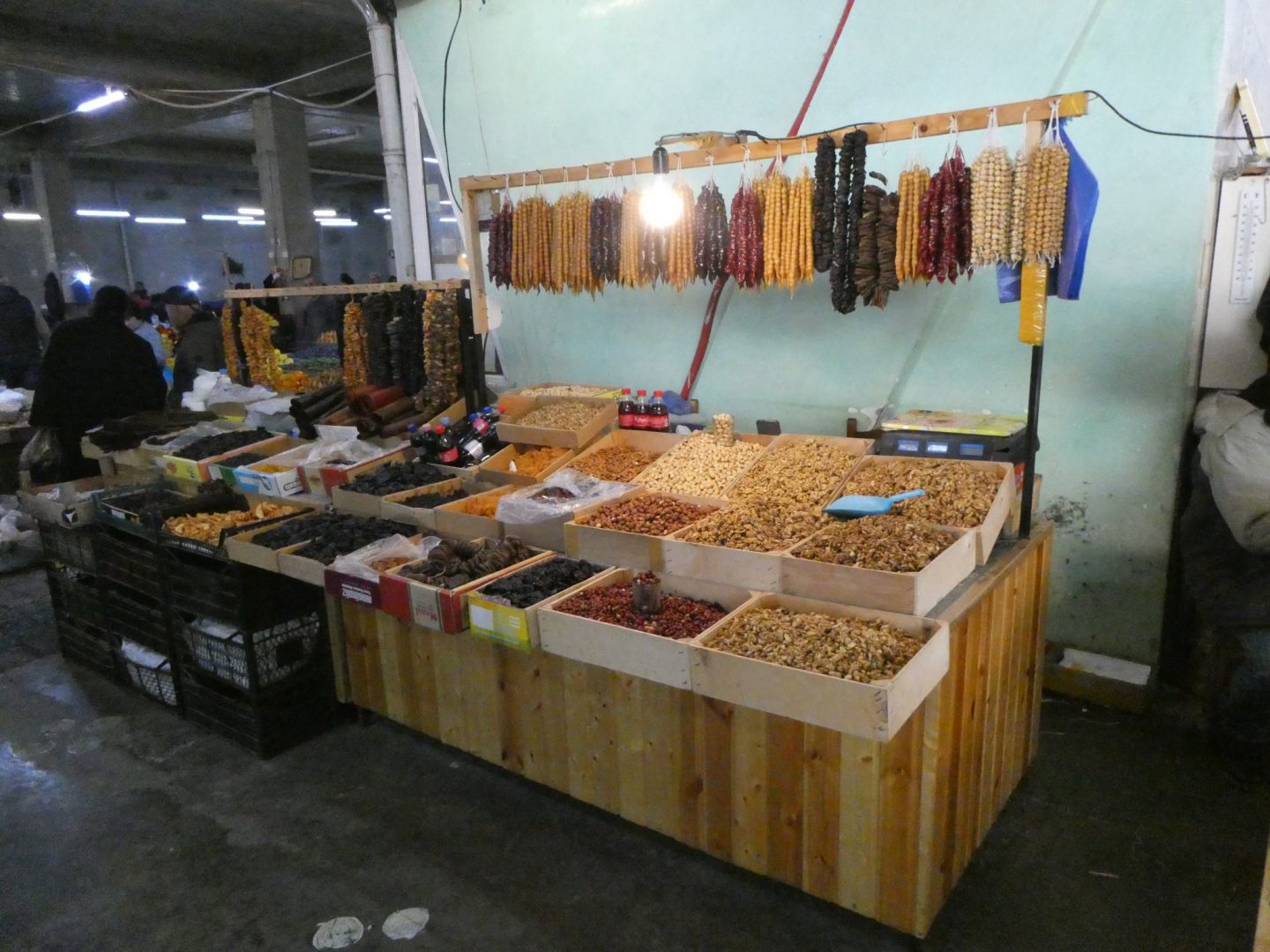 Outside the market there’s a stone mural which dates from Soviet times. 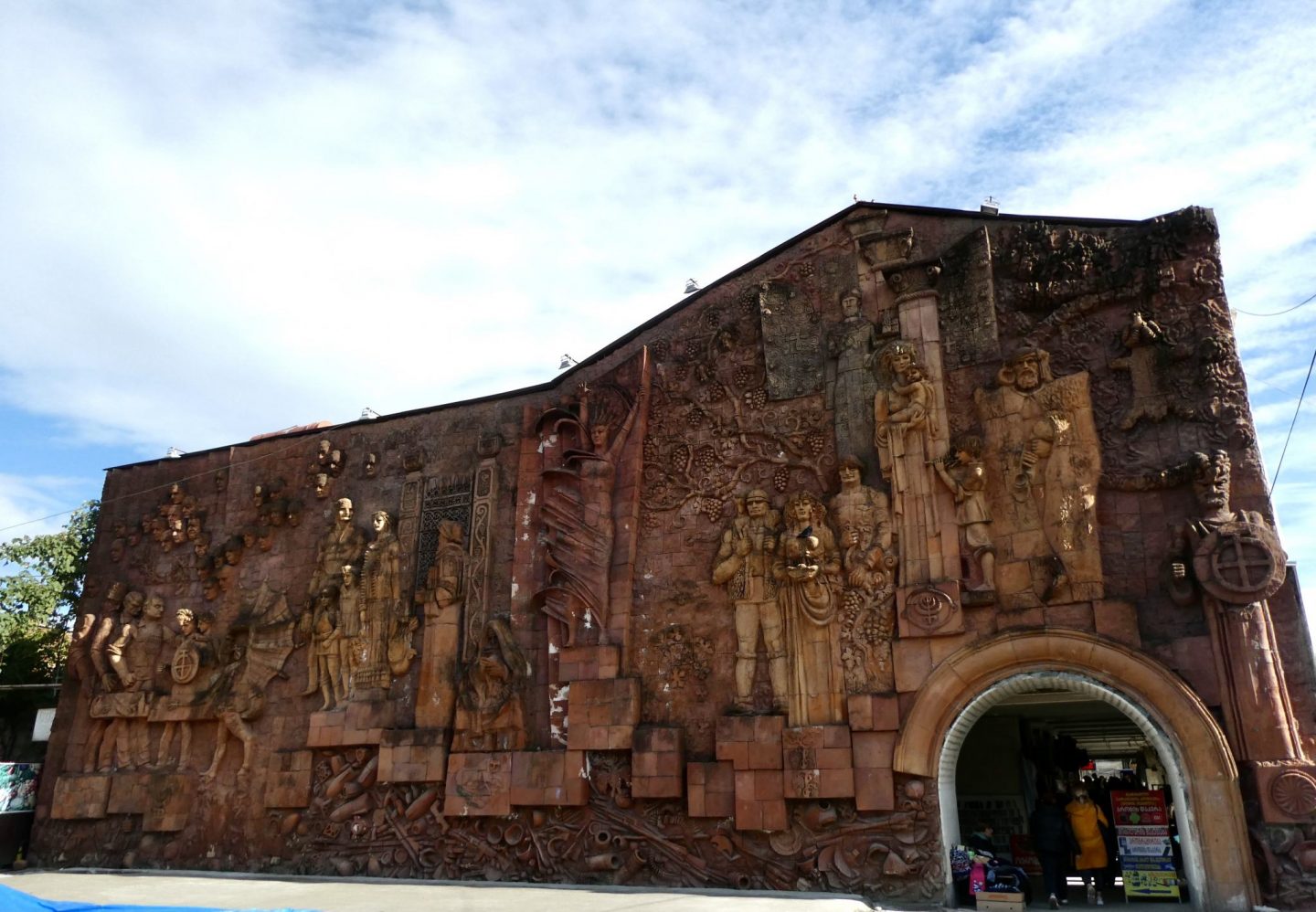 In fact, there’s quite a lot of Soviet era decoration still to be found around town. 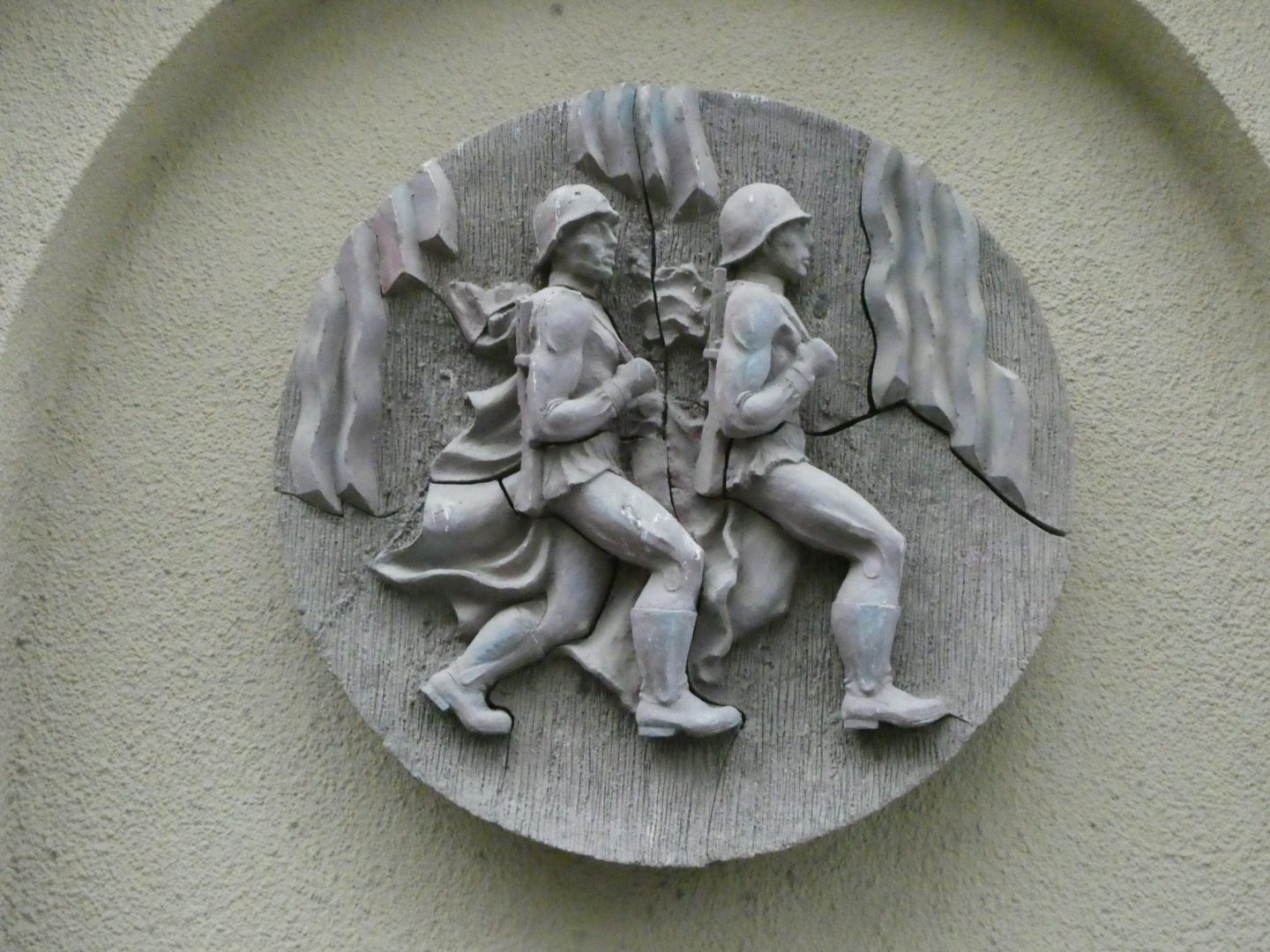 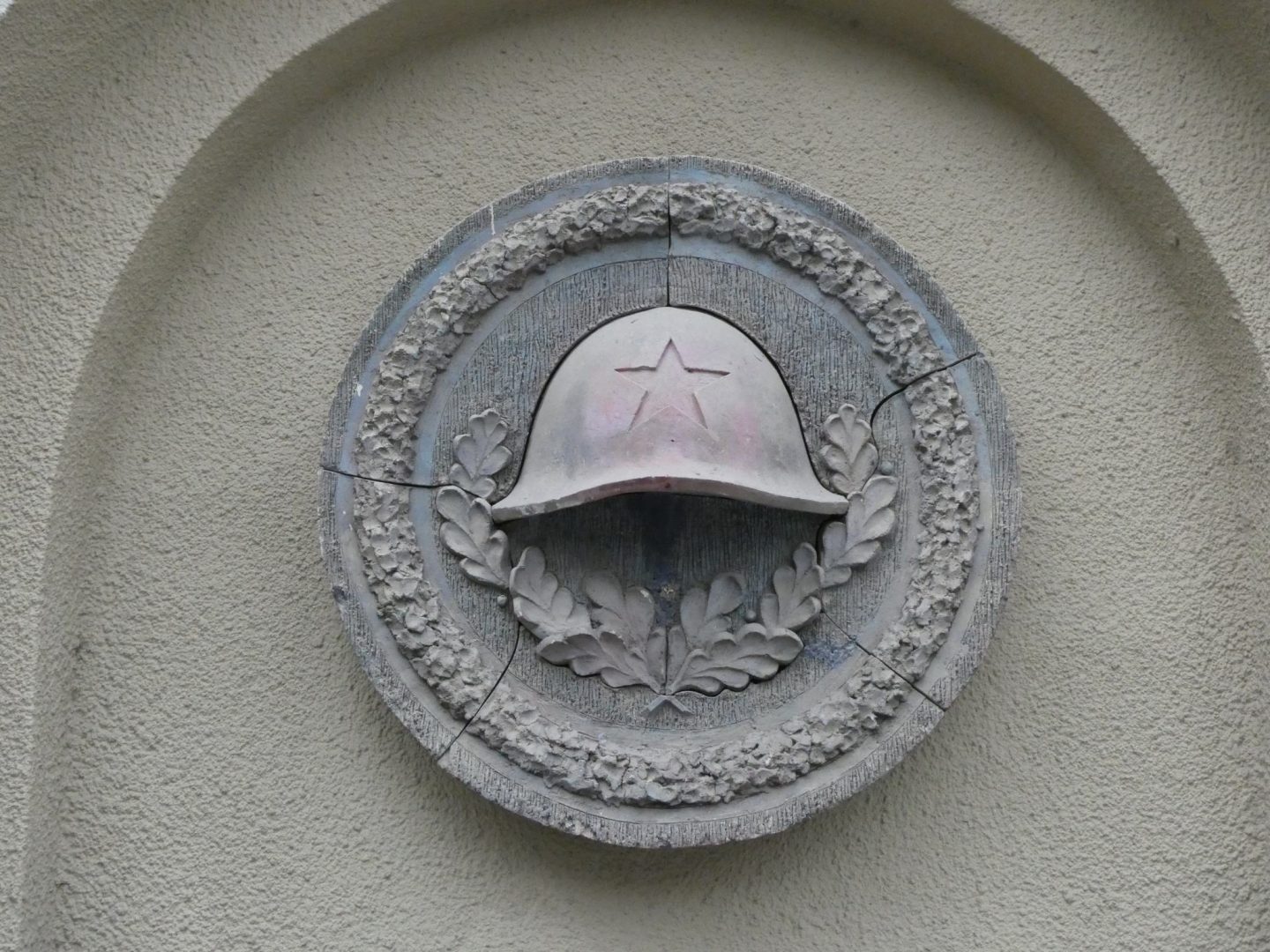 But for the ultimate blast from the Soviet past, we headed to the town of Tskaltubo, twenty minutes north west of Kutaisi.

The area has radon-carbonate mineral springs with a natural temperature of 33 to 36 degrees Celsius.  In the 1920s the State took over the whole territory of Tskaltubo and developed it into a balneotherapy centre.  That’s the treatment of disease by bathing in mineral waters

In the decades following WWII, Tskaltubo became one of the most popular spa towns in the country as well as drawing visitors from across the USSR.

It wasn’t just about relaxation.  It was widely believed that the waters were medicinal.  And it wasn’t just for the rich.  Article 119 of the USSR Constitution gave workers the ‘right to rest and leisure’ ensured by a range of services including ‘a wide network of sanatoria, rest homes and clubs for the accommodation of the working people’.

Doctors would issue vouchers for ordinary working people to spend up to three weeks in the Tskaltubo baths to treat cardiovascular disease, arthritis, rheumatism and endocrine system disorders.

Elaborate resorts variously called hotels or sanatoria were built around a central park where the waters where channeled into different bathing complexes.  At its peak 125,000 people per year flocked to Tskaltubo’s facilities from all over the Soviet Union.

What’s fascinating about this place is what happened when the USSR fell apart.  Specifically, the bottom fell out of the market for spas.  Instantly, catastrophically and completely.  The doors closed overnight.  And then ….. nothing.  These grand hotels were simply left to disintegrate.  And they are still there.

There were about twenty sanatoria/hotels in the Soviet era.

Two have been bought by developers in the last few years but remain empty.   Sanatorium Iveria is fenced up and inaccessible.   Sanatorium Shakhtiori is also fenced and when we arrived the gate was shut but a workman let us in for a furtive poke around after we paid him a ‘tip’.

Built in 1952, it was the largest of Tskaltubo’s spa hotels. 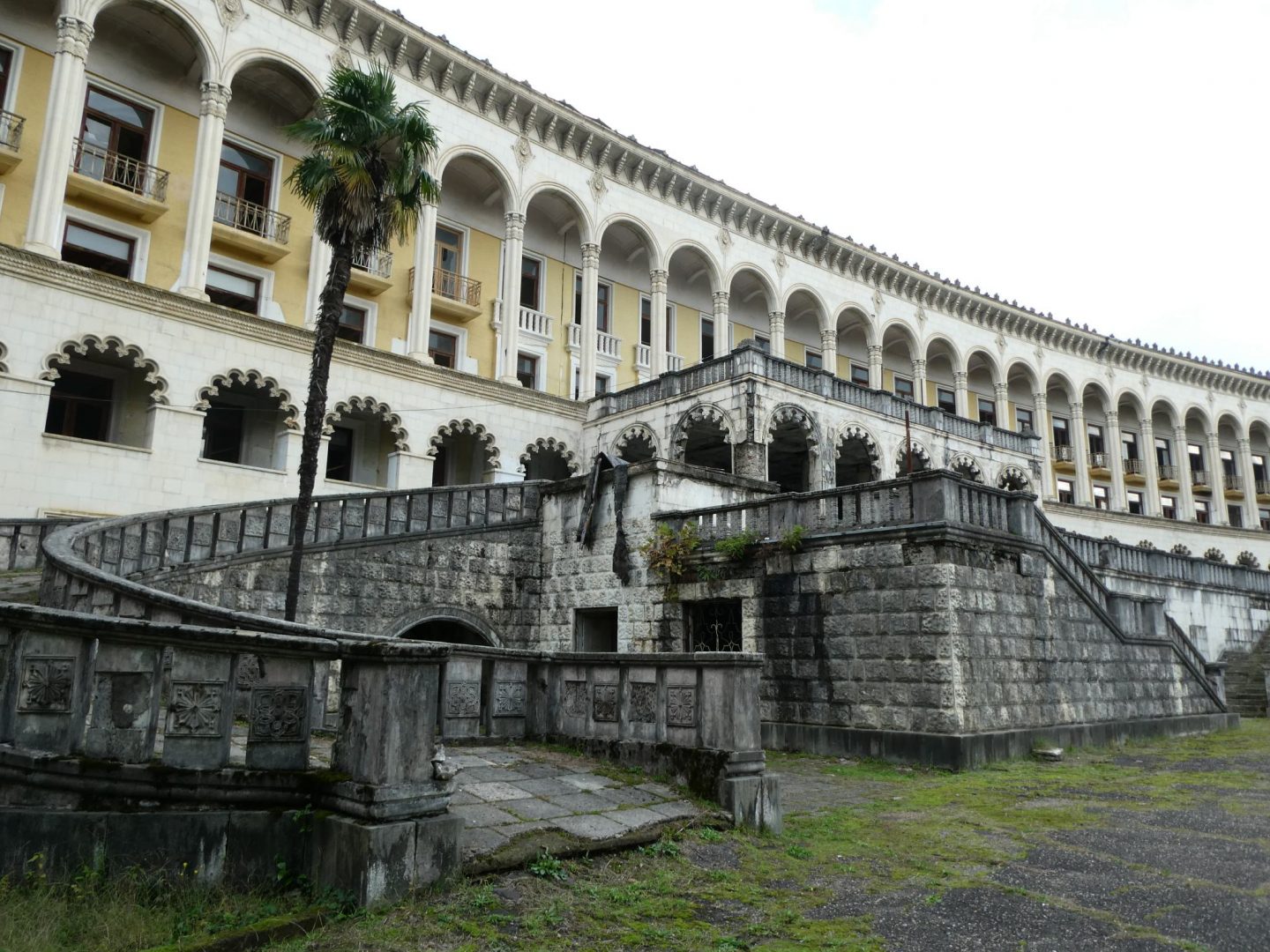 Everything of value has been stripped out but we found a concert hall in one corner of the building, complete with the remains of its red curtain.  The ornate ceiling was still in remarkably good condition. 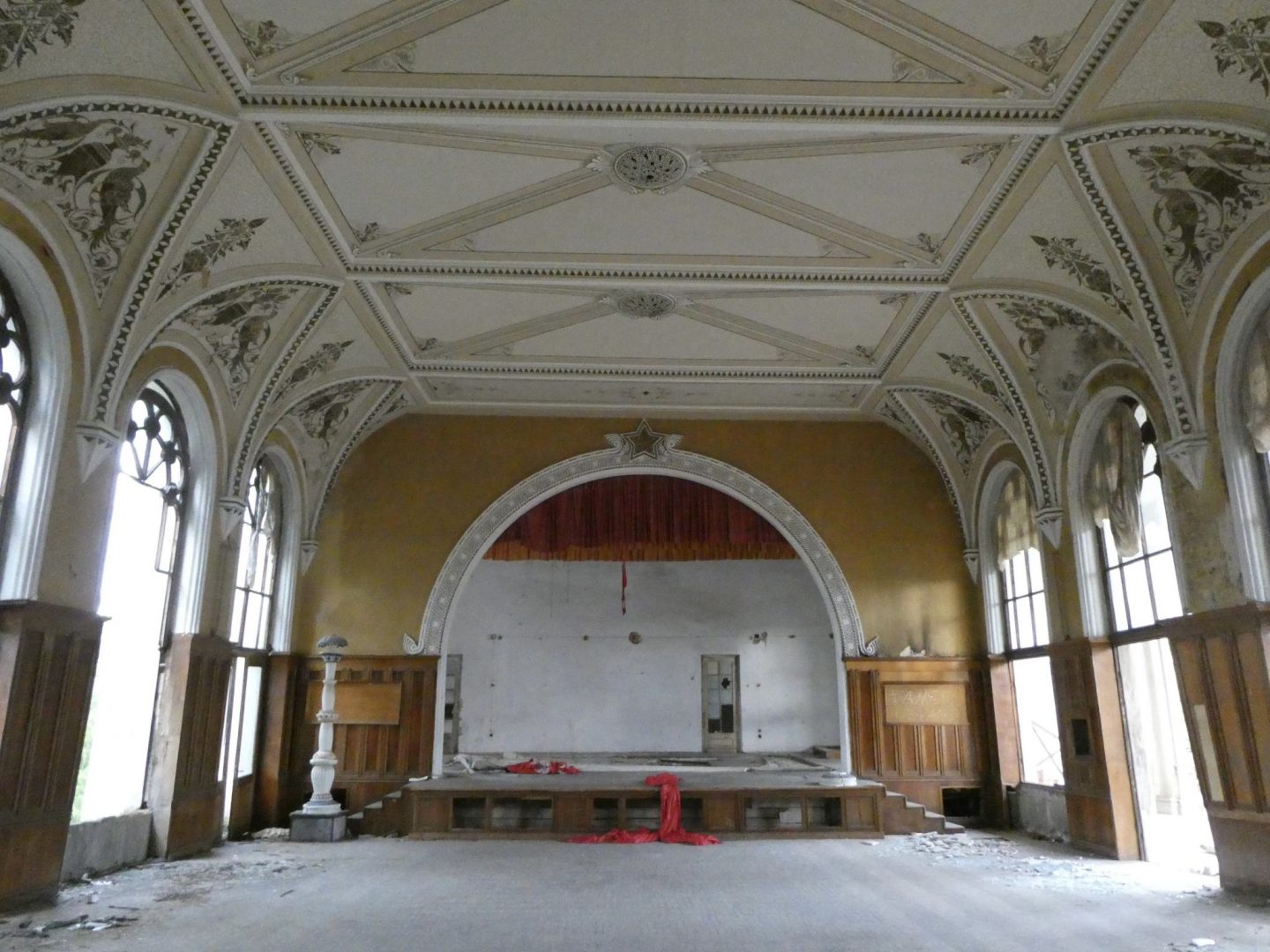 While the two sanatoria in private hands are fenced off, there’s nothing to stop you having a look at the other abandoned ones.  A stray dog adopted us for the day and played tour guide.  She seemed to know her way around all the old buildings.

From Shakhtiori we headed to Sanatorium Imereti where we’d read there was an impressive rotunda.  The dog led us to the front door of the main building. 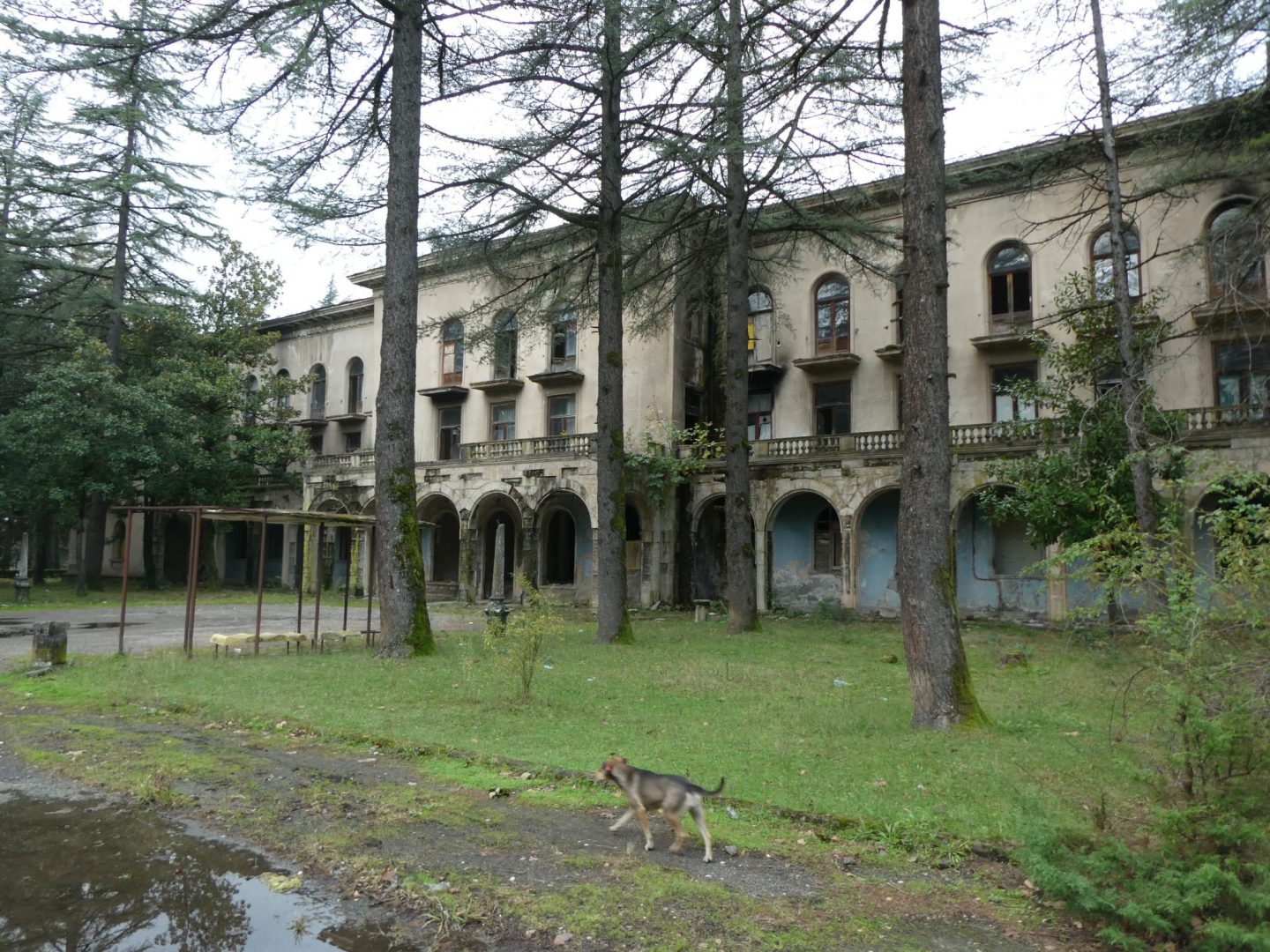 We couldn’t see the rotunda but the dog knew what we were looking for.  She took us around the back and through a very overgrown area and there it was hidden in the trees. 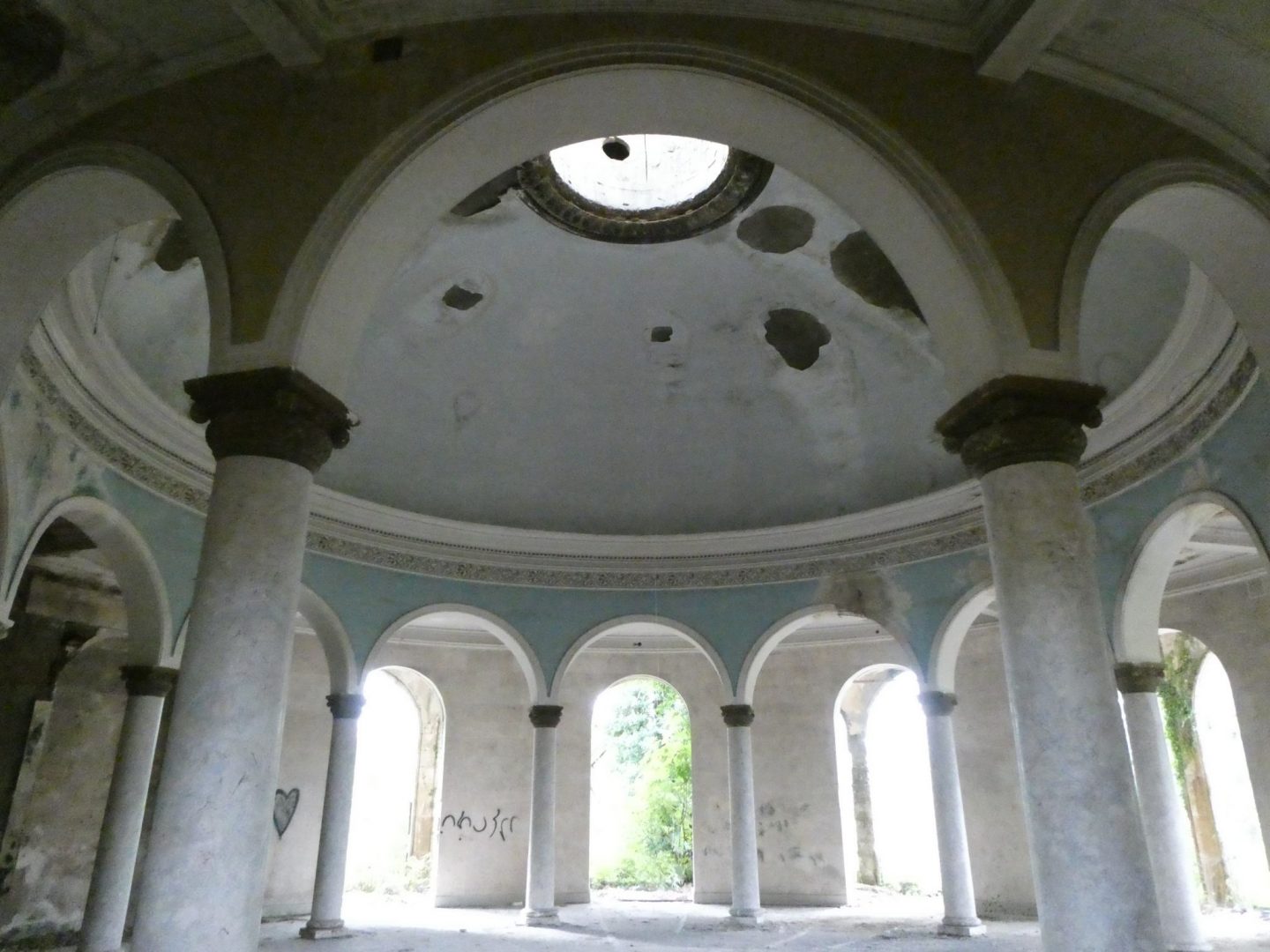 Some of the resorts were named for particular trades and professions.  At Sanatorium Metallurgist, a chandelier still hangs in the once elegant entrance hall. 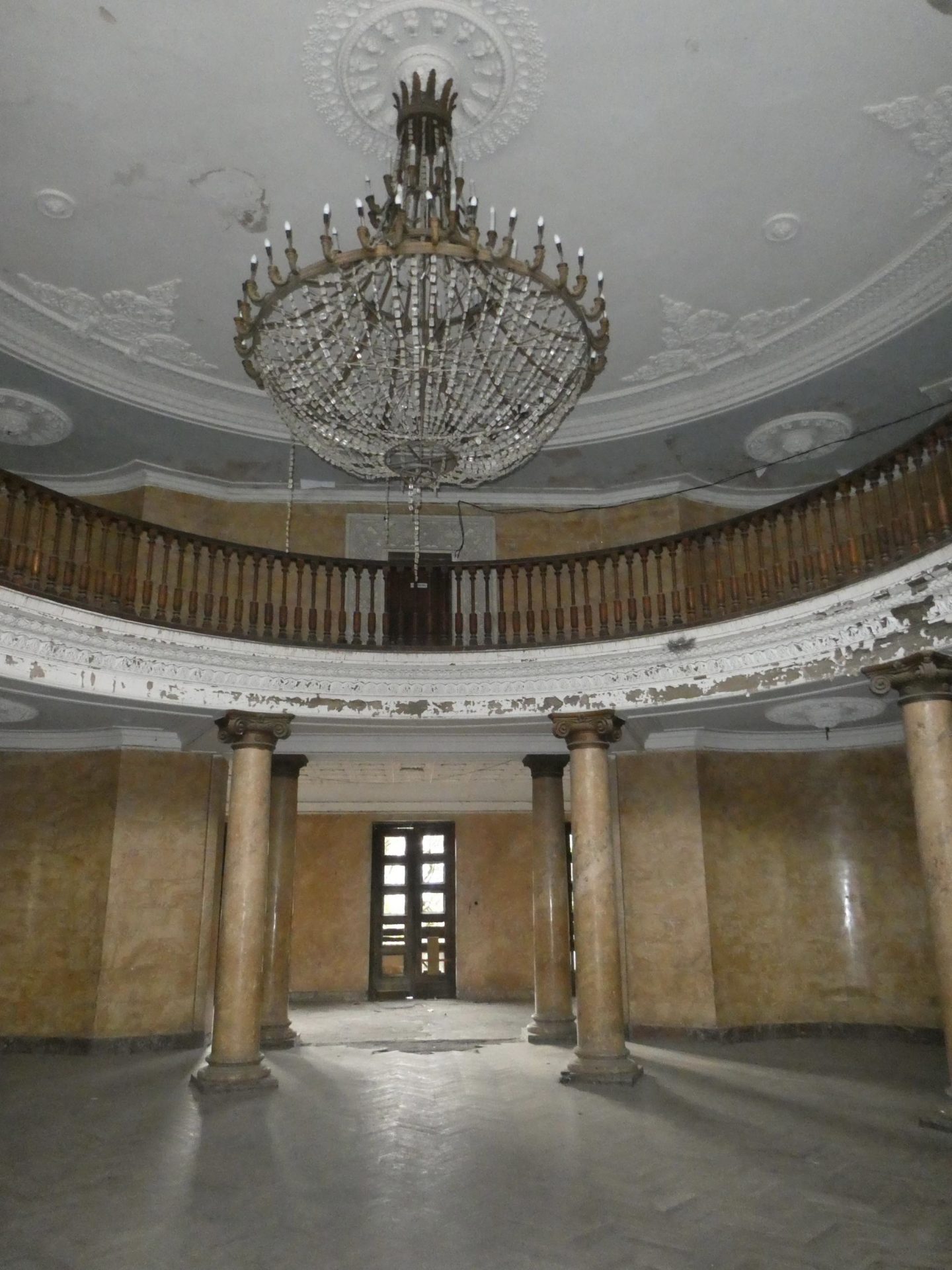 Upstairs the lifts are colour coded.  Blue for men, pink for the ladies. 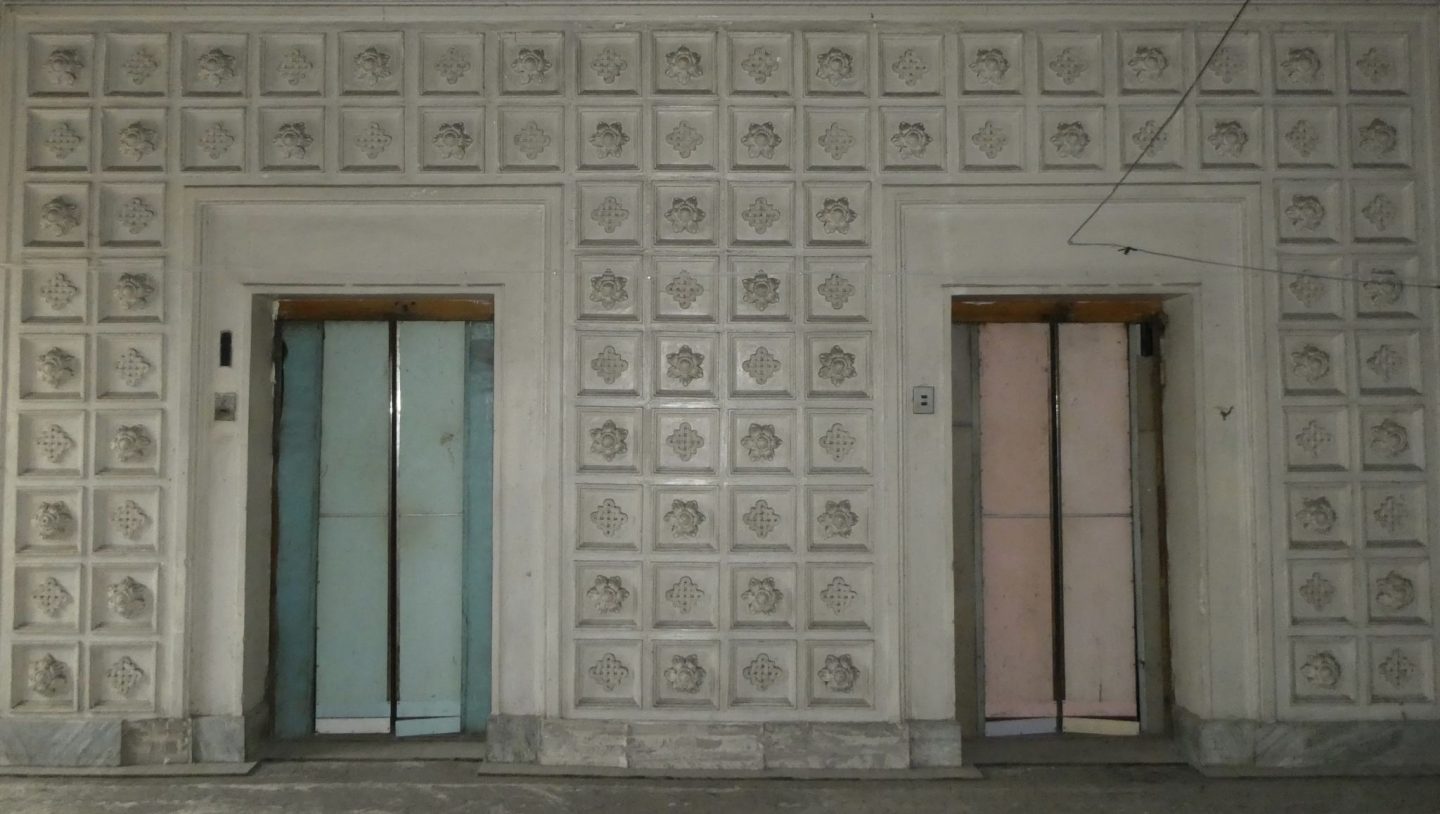 The dog was still in charge and led us to a back entrance to what would once have been a beautiful conservatory. 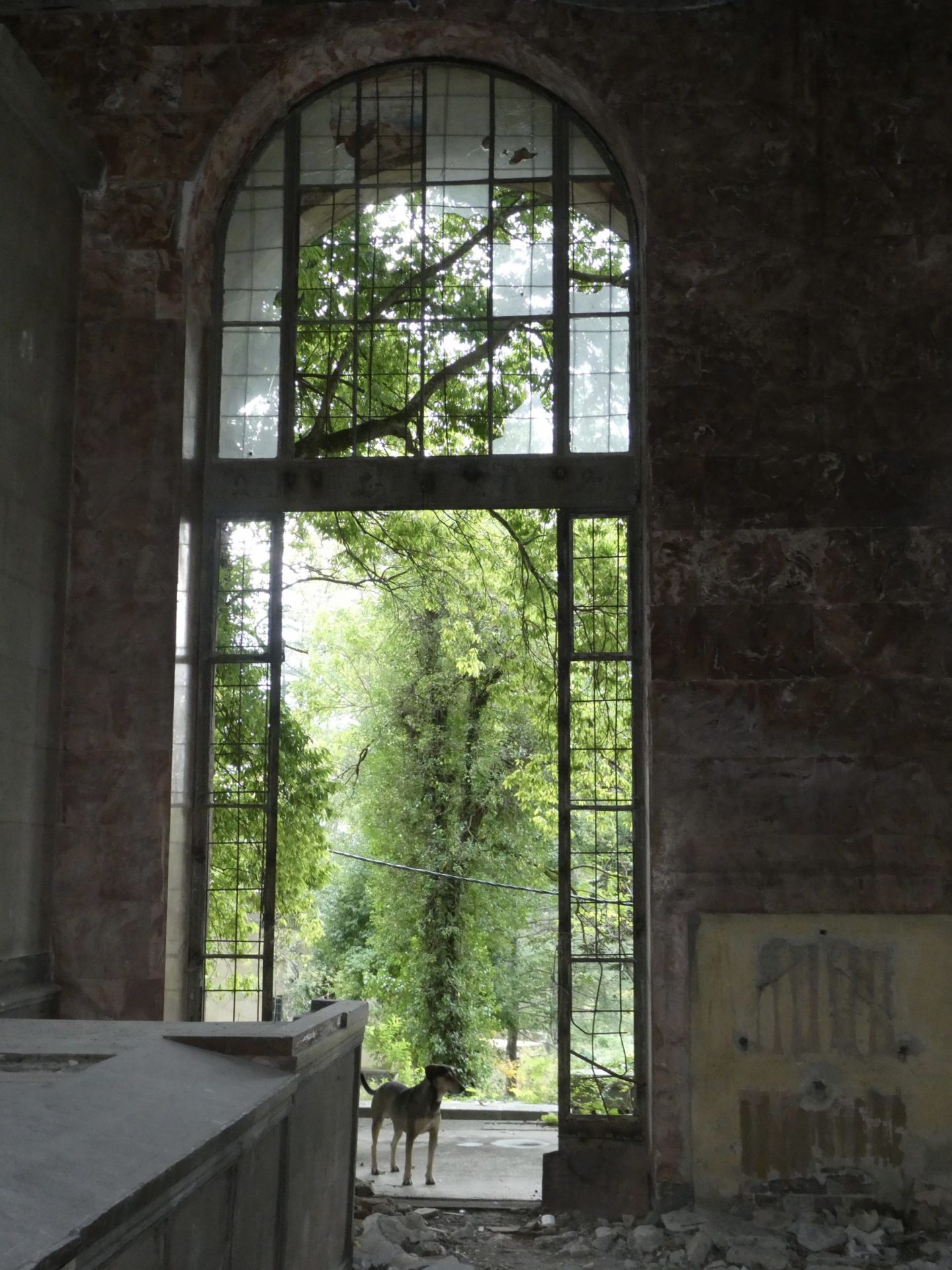 A tree has erupted up through the concrete floor to be perfectly framed by the glass and empty doorways. 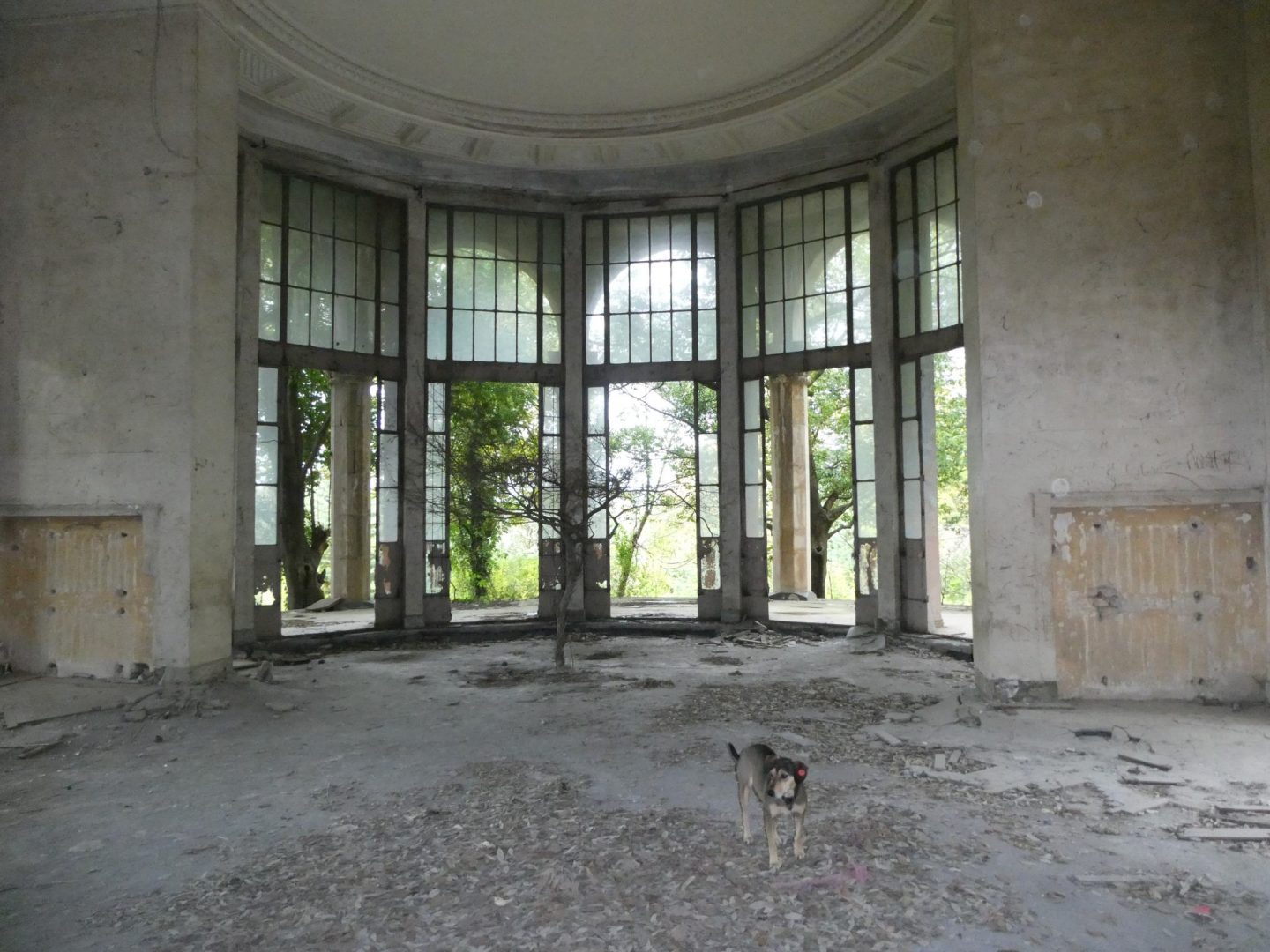 There was also a concert hall where everything of value has been plundered.  Randomly, a few of the original seats are still here. 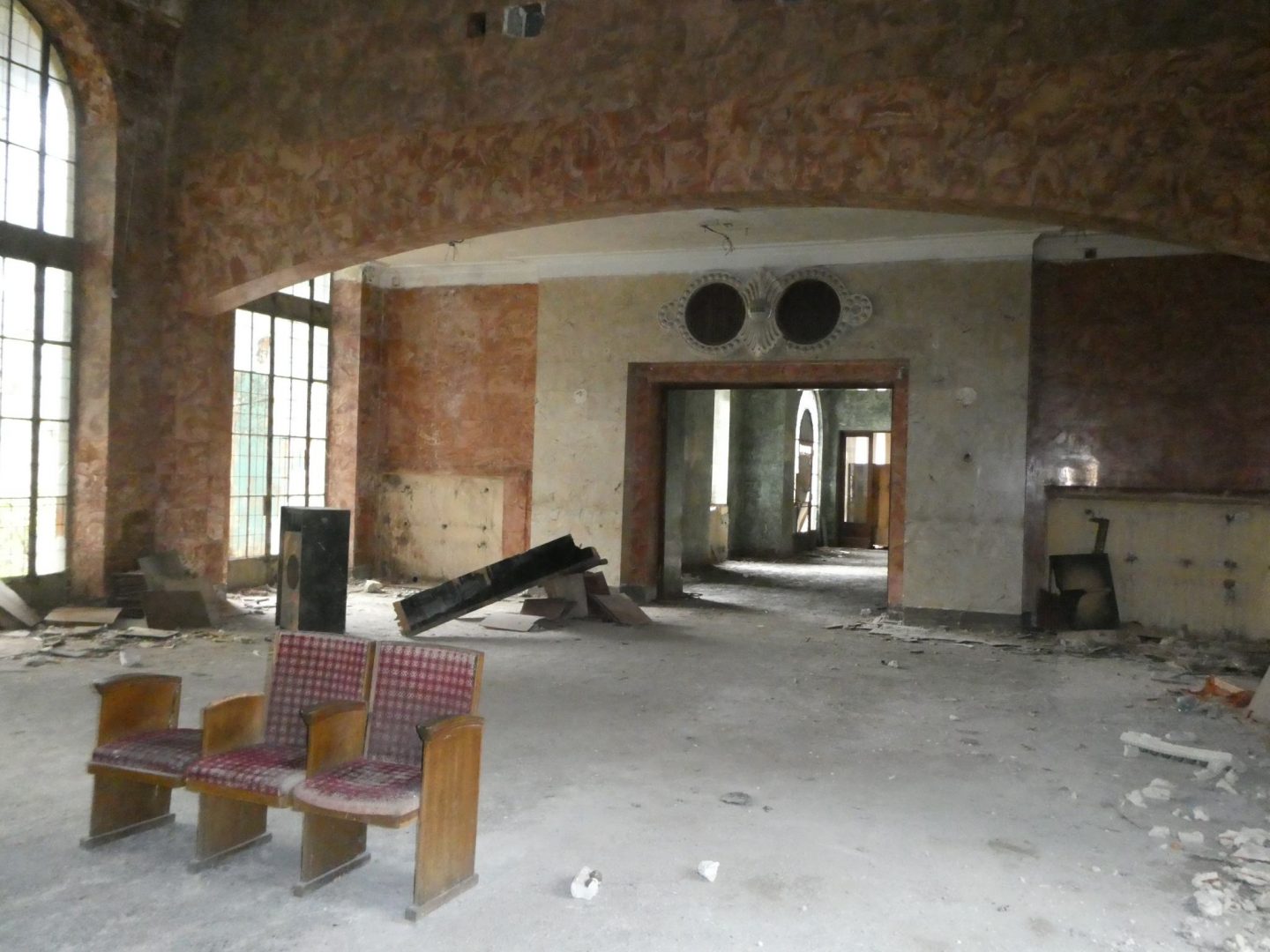 You wander around these buildings at your own risk.  They aren’t exactly workplace health and safety compliant.  But even in the mud and sludge, there can be beauty. 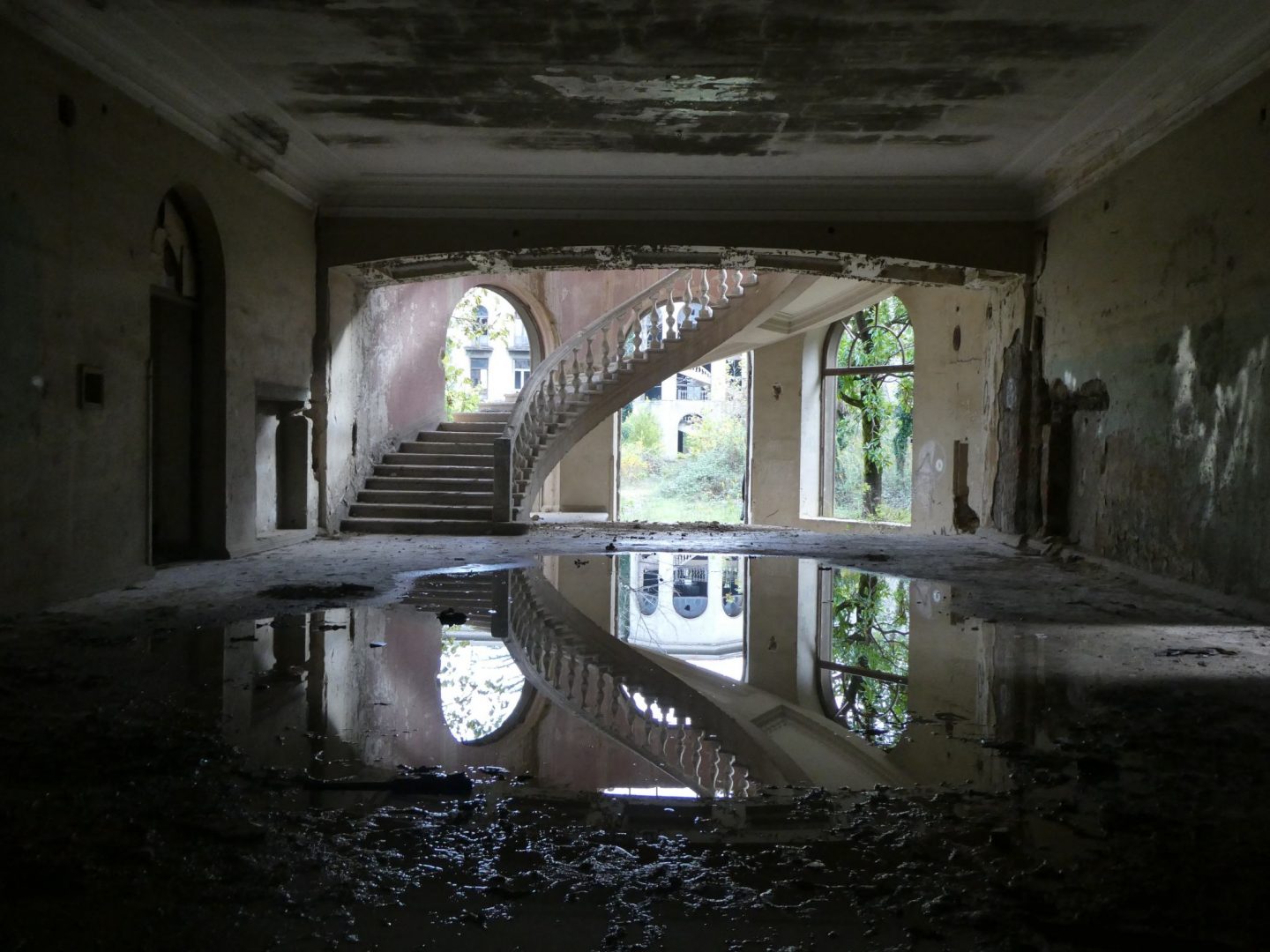 What is truly devastating is that some of these buildings have acquired a second life as homes for Georgians displaced by the war in Abkhazia.  In 1992-3, when separatists backed by Russia attempted to break away from Georgia, more than 250,000 ethnic Georgians were pushed out of the territory.  It has been recognised by the international community as both ethnic cleansing and a war crime.

The Georgian government accommodated about 10,000 of these internally displaced persons in some of the old spa hotels.  Many were eventually given permanent housing but sadly, more than two decades later, about 500 families are still living in several of these decrepit buildings.  Conditions are tough.  Plastic is nailed over window openings which have no glass.  There is no electricity or heating.  Residents cook their meals on little petrol powered cookers.  It is unlikely they will ever be able to return home.  Russian tourists are most definitely not welcome here.

Our canine tour guide stuck with us all day.  When we’d seen enough, we thought she deserved a tip.  There’s a reasonably active management program for street dogs here including sterilisation and rabies vaccination.  Generally they don’t beg for food, so someone is feeding them.  But we bought a tin of fish for her and she seemed pleased as we headed to the bus back to Kutaisi.